After traveling over 10,000 miles last summer as I made my way from Texas to the far reaches of Newfoundland and Labrador and back in just over four months, I vowed to slow way down this year, driving less and staying put longer.  The best area to do that seasonally in the US is the “four corners” area, seeking higher elevations while trying to stay just ahead of the rising summer temps.   Having never spent much time in Flagstaff, its spring weather forecast at over 7,000 ft and abundance of dispersed camping in the Coconino Forest make it an appealing stop to escape the desert heat while waiting out the mud season in Colorado. 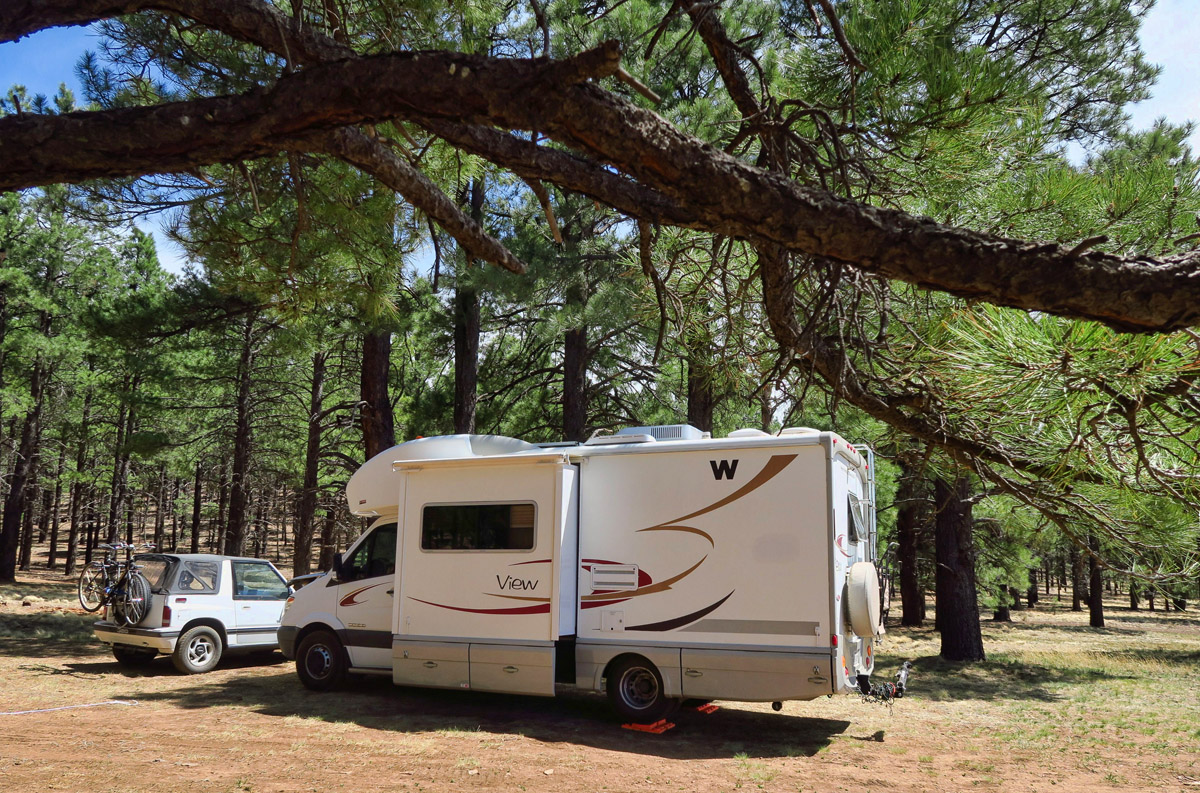 At last, peace and quiet in the forest…It would appear I am alone. 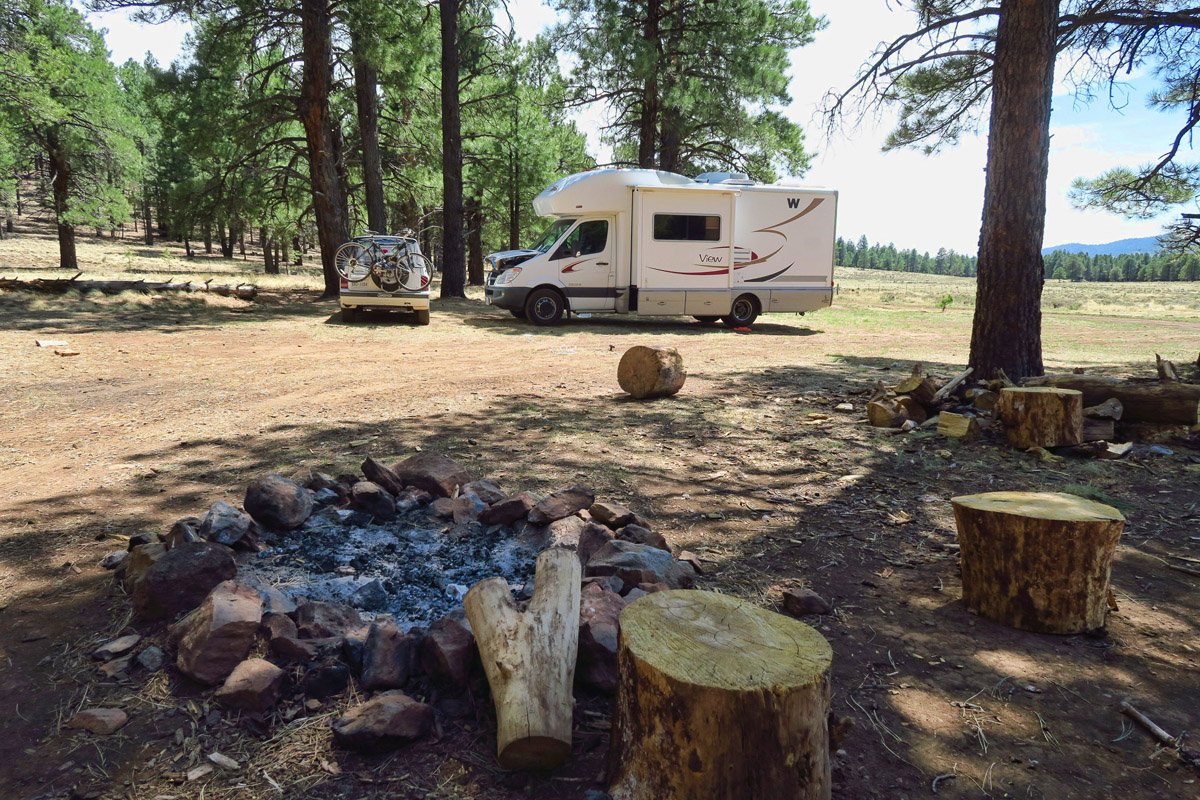 ….but will my luck hold? Clearly others have been here before me, as there are signs of a “convergence.” The only thing that might save me is the recent fire ban, restricting all wood and charcoal fires. 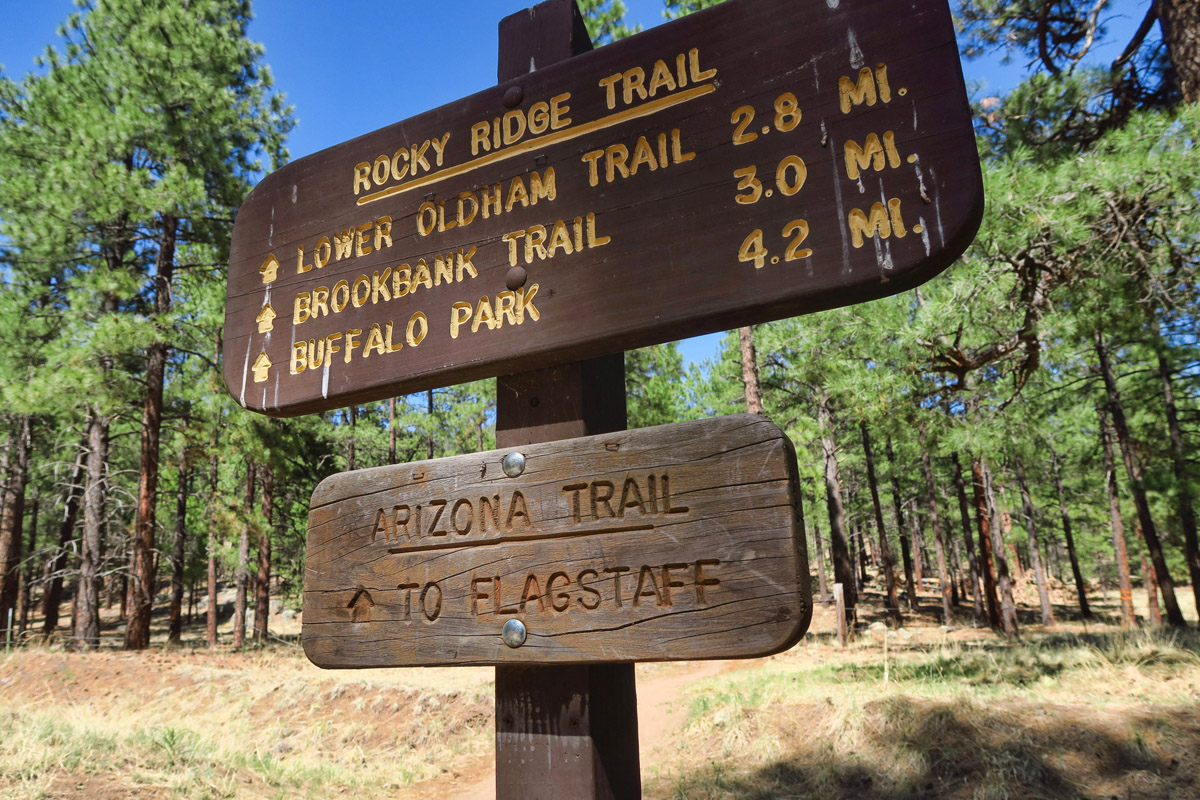 Hiking a bit of the Arizona Trail.

But weather is not my only reason for putting Flagstaff on the itinerary this year.  I am here to attend the Overland Expo.

Back when I was living in my “sticks and bricks” in Atlanta, I frequently escaped hectic Hotlanta with three day weekends up to the Blue Ridge Mountains.   It was during one of those retreats that I first heard about the “Overland Expo,” an upcoming event in Asheville, billed as THE premier event for overland adventure travel. Though I was right place, wrong time back then, the event peaked my curiosity.   I vowed to attend an Overland Expo if my travel timing ever aligned 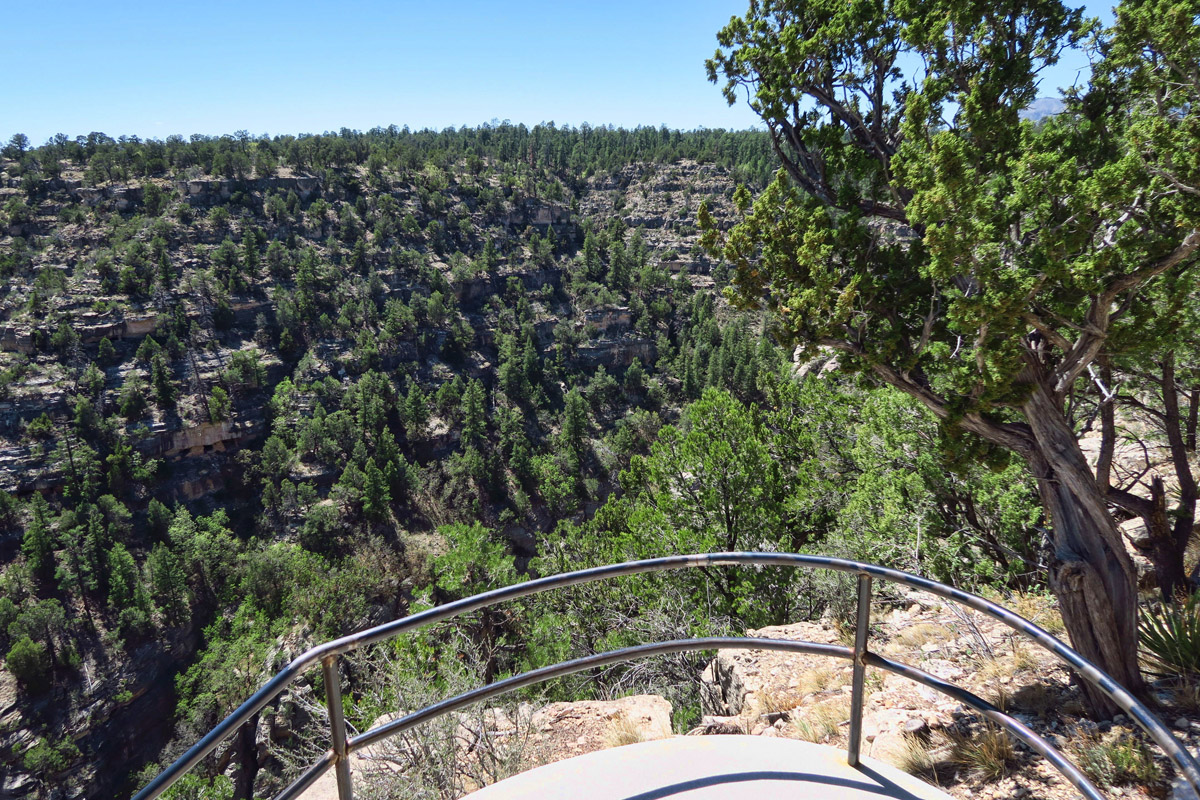 Just 10 miles outside of Flagstaff is the beautiful Walnut Canyon National Monument. 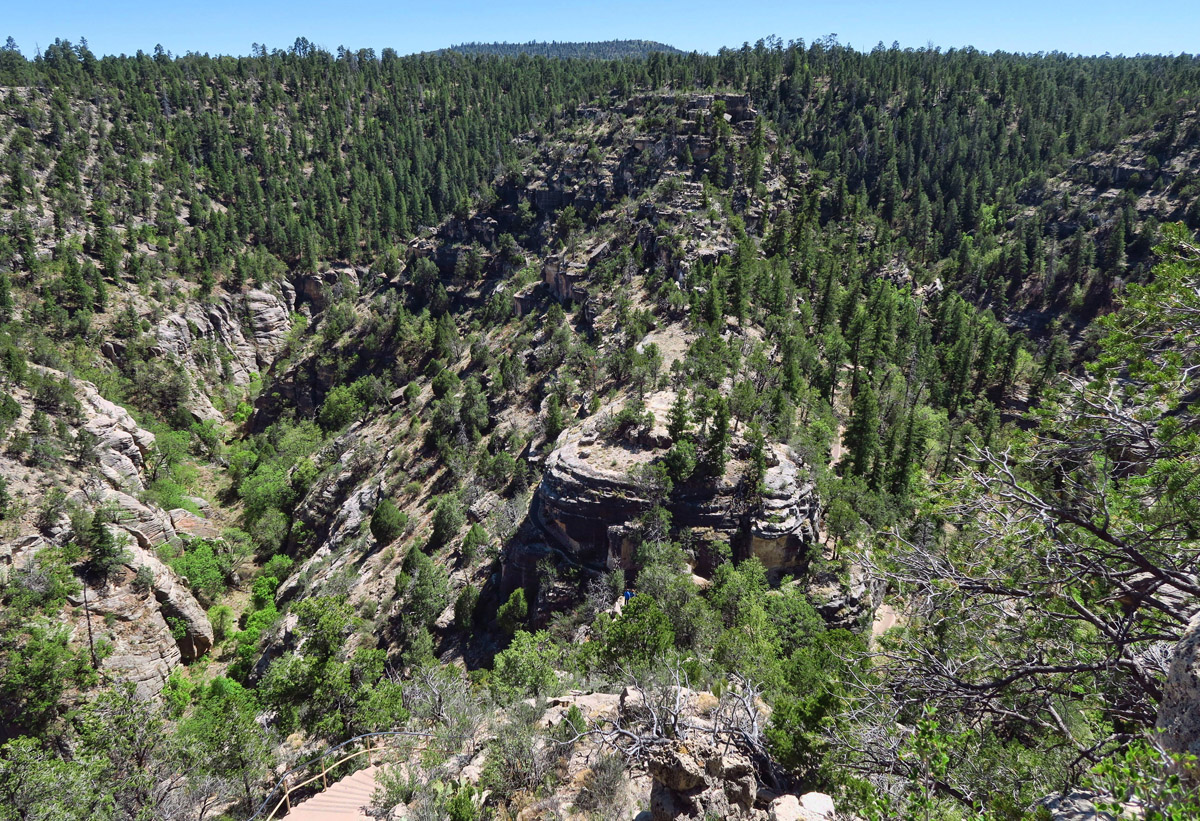 The erosion from Walnut Creek, which eventually joins the Little Colorado River flowing into the Grand Canyon has chiseled away “islands” within the canyon. 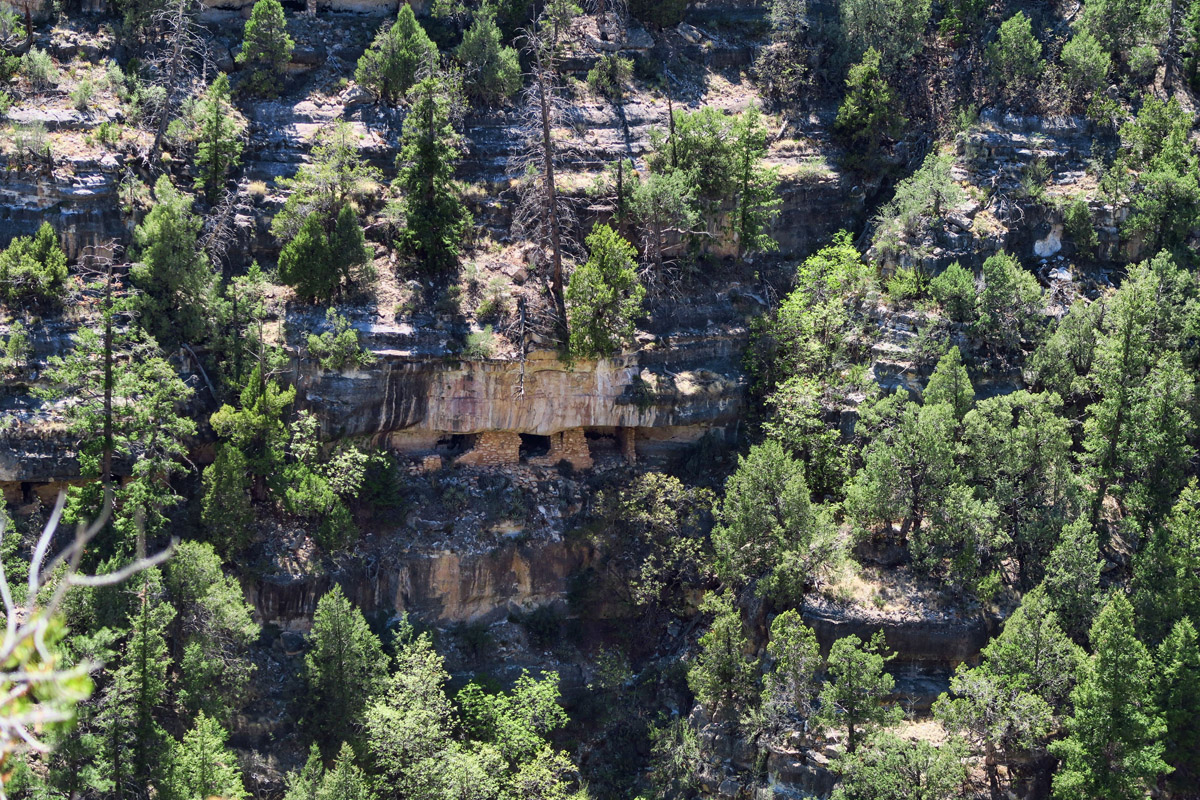 These terraced ledges made an ideal location for cliff dwellings. 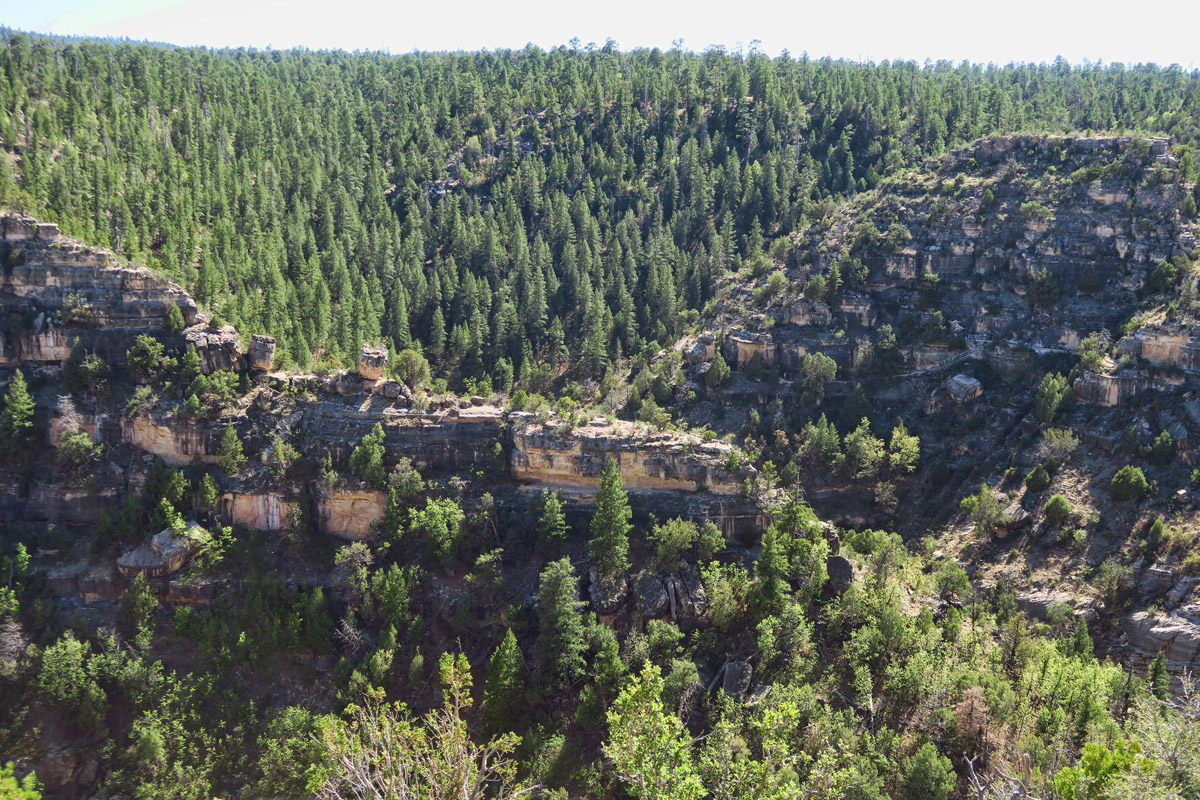 The formation of the canyon offered some protection from the weather, as there is a “sunny side” where warmer, drier air offers warmth, while the ponderosa pine and fir across the way offer cool shade.

The Expo is a bi-annual event, with Expo East taking place in November in Asheville, NC, and Expo West in Flagstaff, Arizona in May each year.  It is a three day festival of sorts for overlanding with classes and skills training for 4WD and motorcycle riding, over 350 vendors, demos, roundtables, and a nightly film festival. 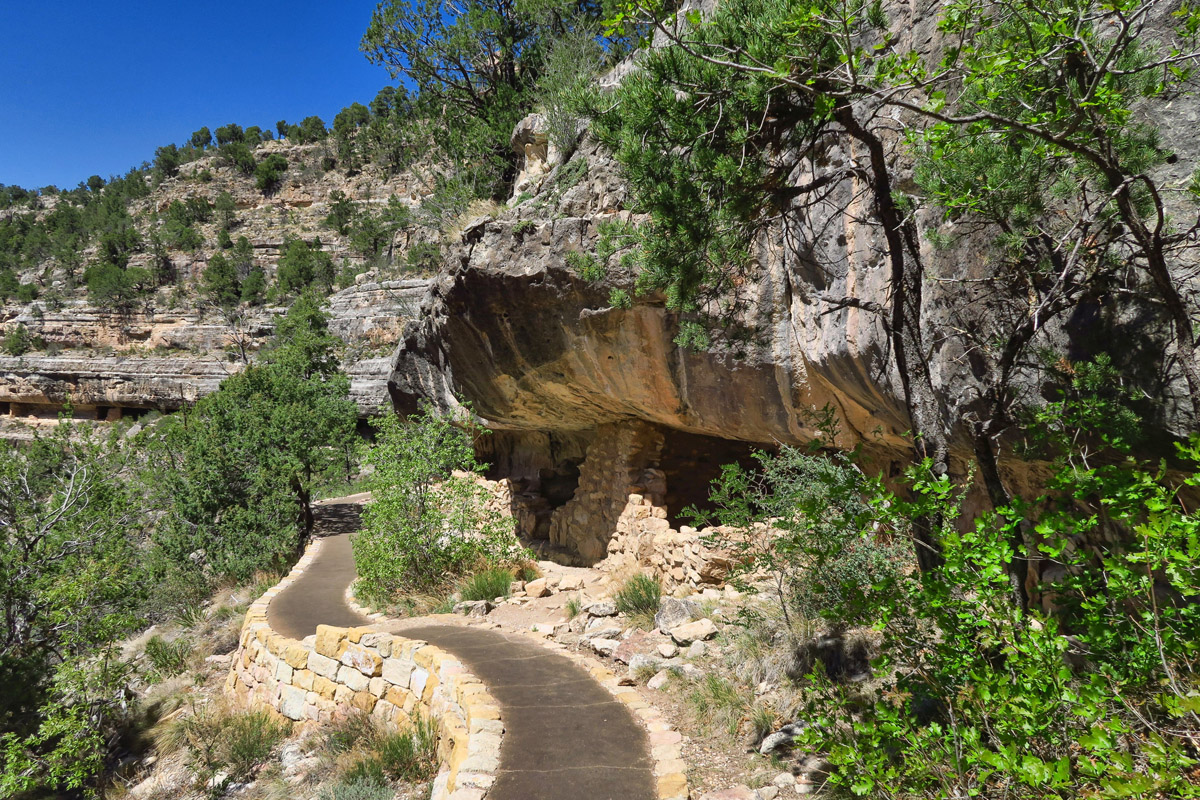 The “Island Trail” enables visitors to get up close to the dwellings, as long as you don’t mind the 700+ steps to get there and back. Otherwise, the Rim Trail offers great overlooks. 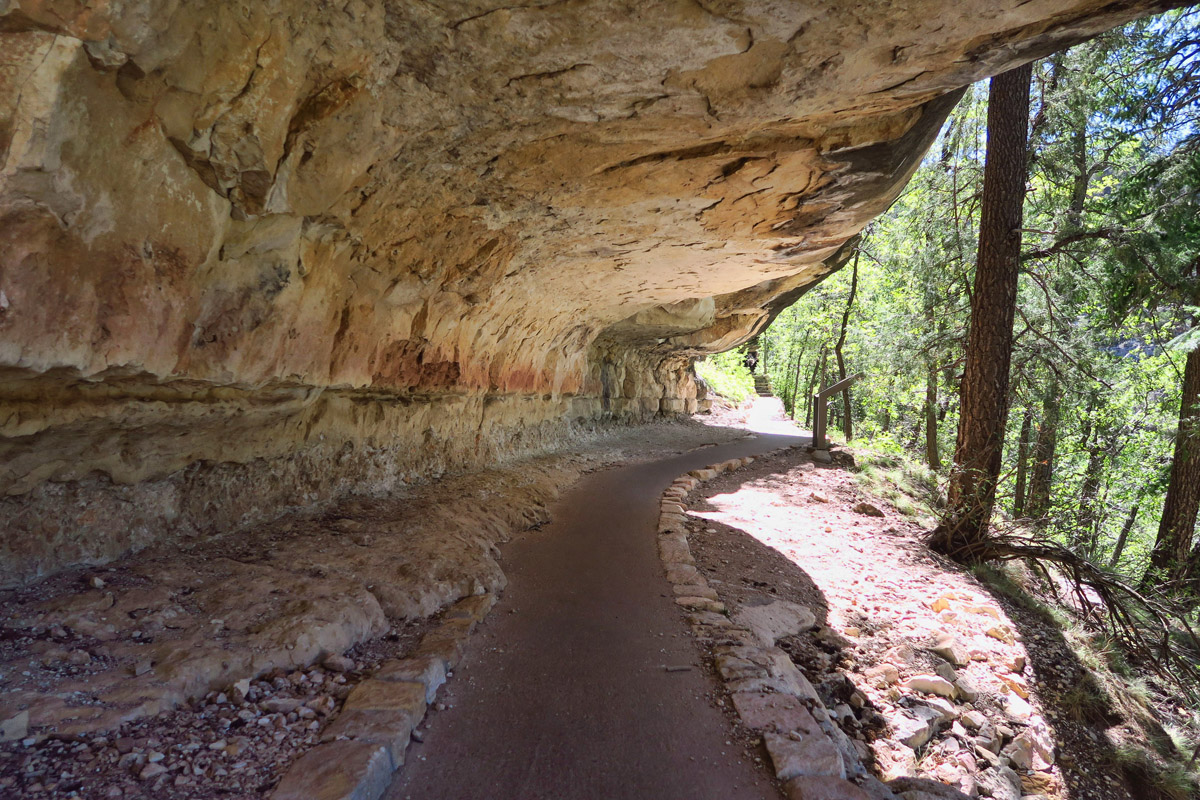 The dwellings were occupied from about A.D. 600 until 1400 by the Sinagua, ancient puebloans named after the Spanish words, Sin Agua, or “mountains without water.” 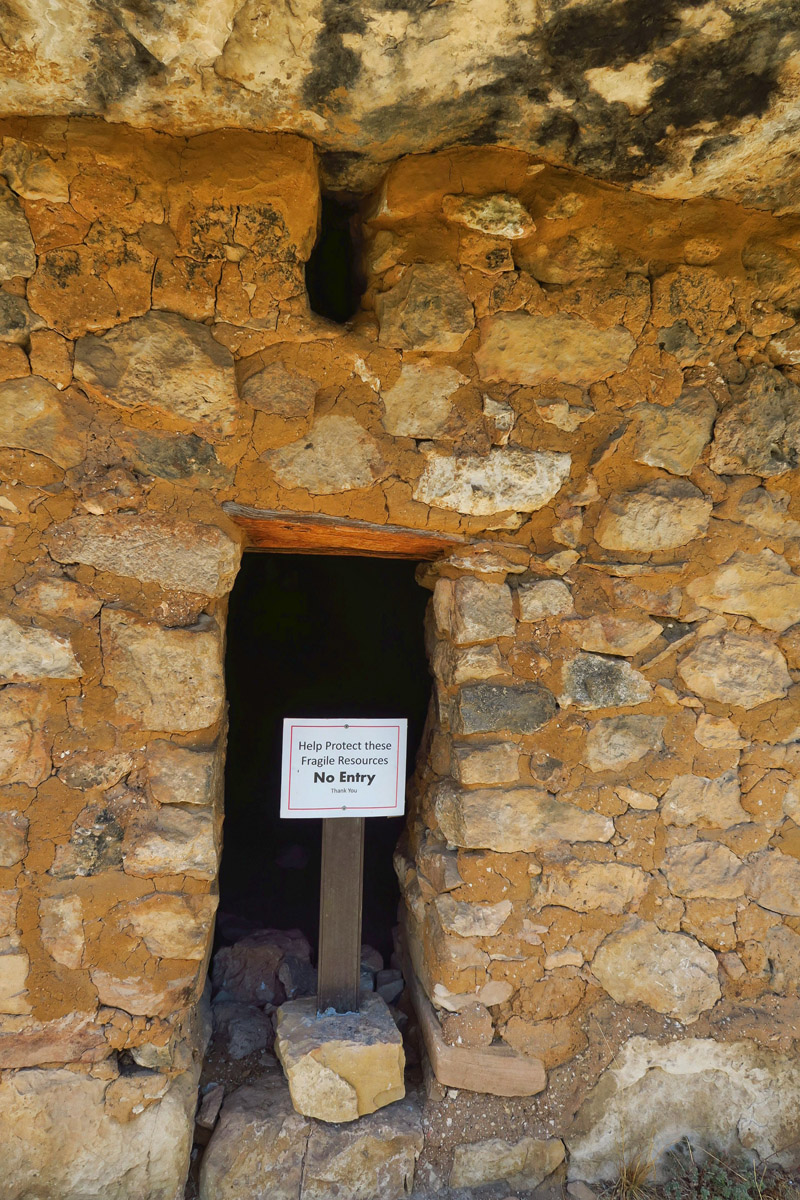 In spite of lack of water, the Sinaguas were still able to farm crops of corn, gourds, etc. on the mesa above the cliff dwellings. (Note smoke hole over doorway.) 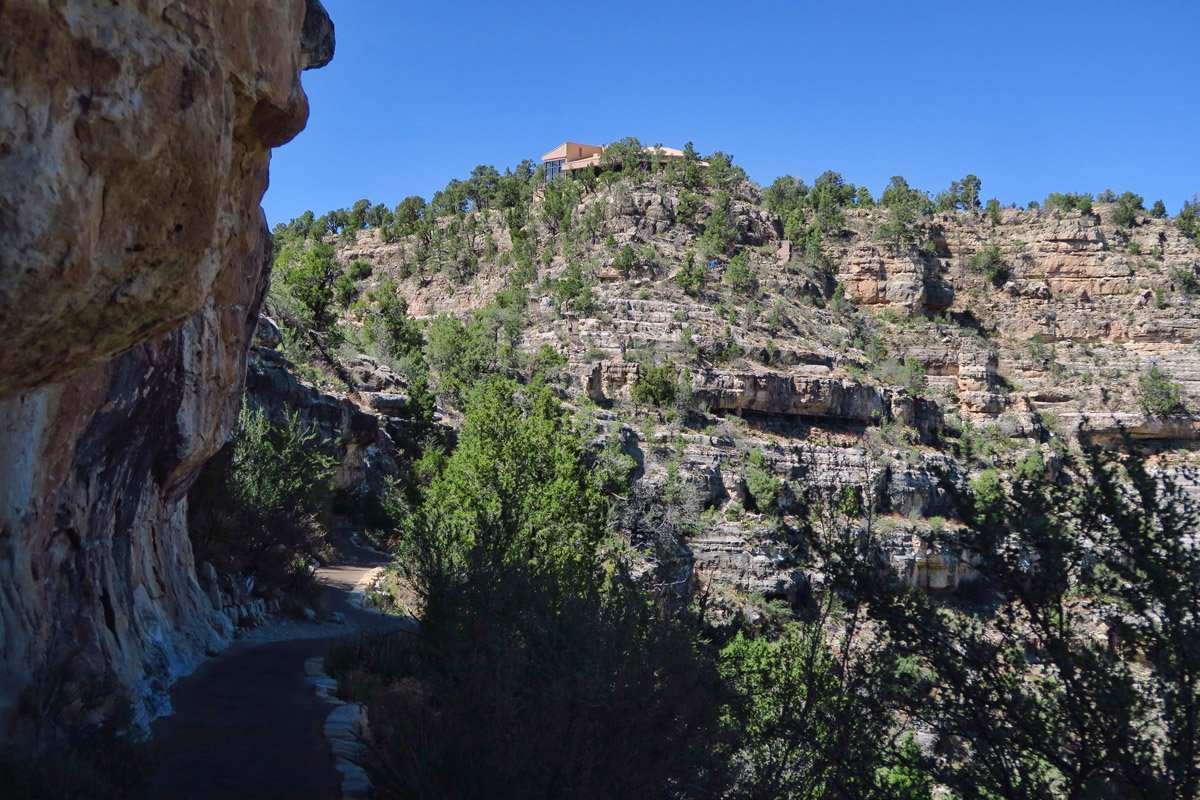 At the top of the rim in the distance is a nice Visitor and Interpretive Center.

Overland travel has always intrigued me.  I’ve had a taste of driving cross-country in an overland vehicle a few times.  The big blue Kumuka truck across western Africa, then again with Overland Oasis from Cairo to Istanbul, and driving across Guatemala with my brother Don in his Toyota Land Cruiser back in 2008.  Since then, I have followed the blogs of multiple travelers as they made their way across the globe on four wheels, navigating borders and bureaucracy for a chance to immerse themselves in a culture different from their own.   It’s a world I dream about, circumnavigating the globe’s terrain by 4×4, but will likely only experience through the eyes of others.  What better place to dabble than the Overland Expo event. 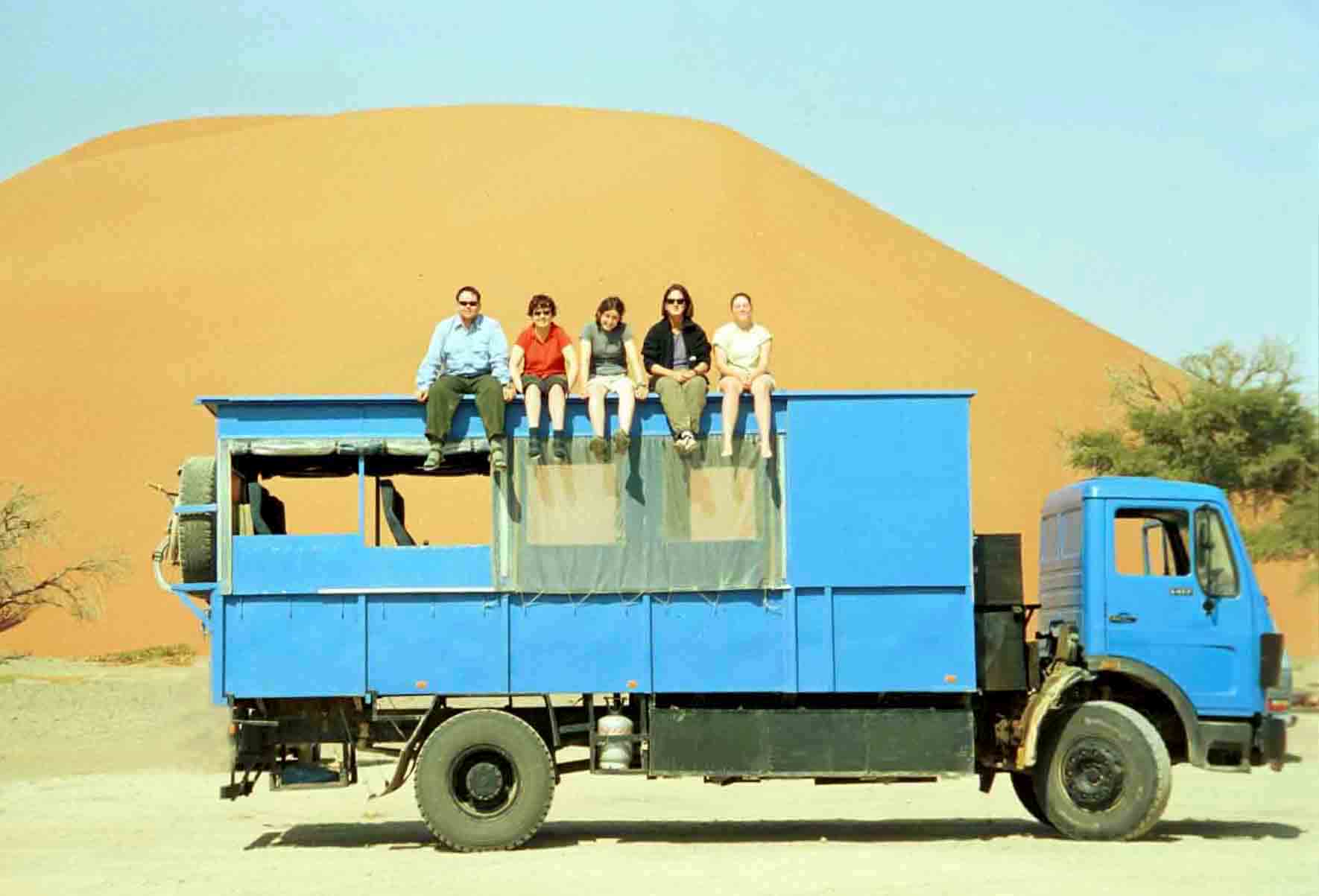 My first “overland experience” in 2002 with Kumuka, the big blue truck from Capetown to Zimbabwe. Namib Desert, Africa.

I have often found that being on the inside of an event like this can be far more interesting than observing as a spectator, so in early spring, I go online to check for volunteer opportunities.  Thinking I can exchange a few hours work for a free pass and a tee-shirt, I submit my online application.  Not long after, I receive an email from volunteer coordinator Cyan that she would like to contact me for a phone interview.  A phone interview??  I have to interview to volunteer?   I don’t know if I am offended or intrigued, but I put my best foot forward, feeling myself slip back into Corporate Mode as if I am selling myself for my next career move. 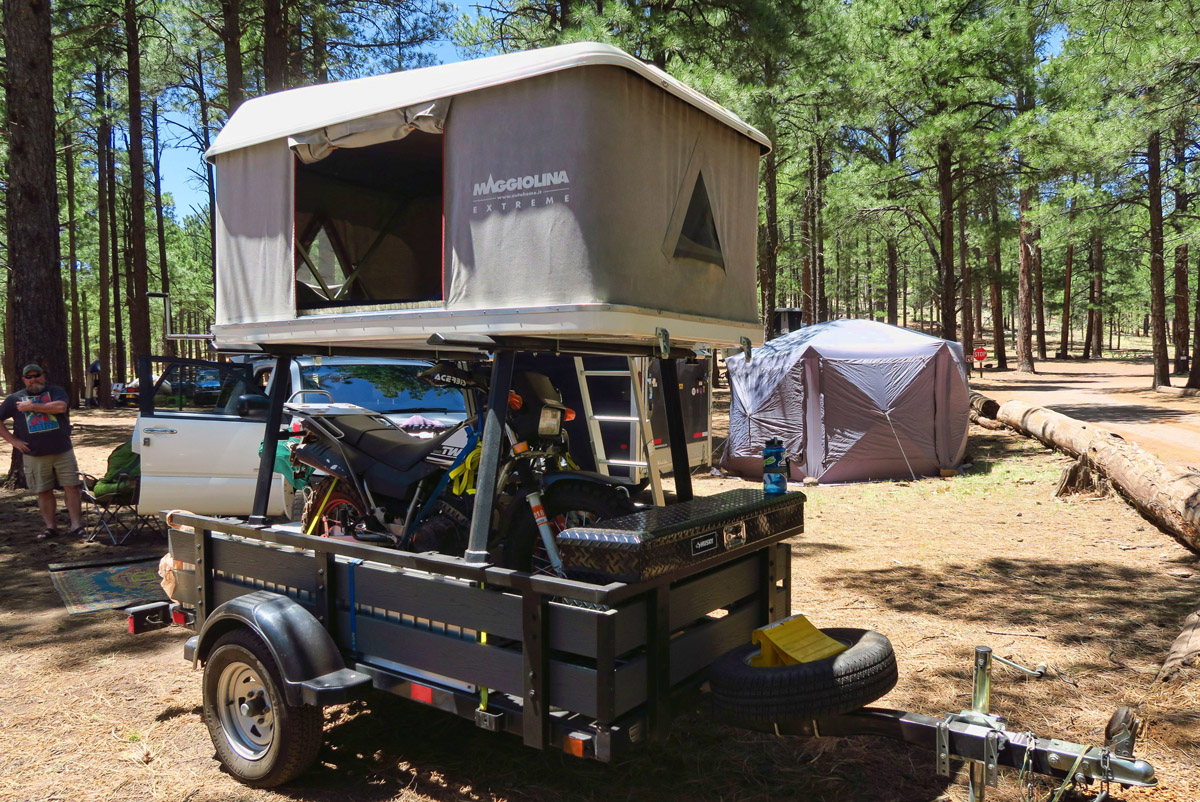 In the Fort Tuthill County Campground, this is one of my neighbors, Nate. He trailers his motorbike and sleeps in the pop-up overhead. 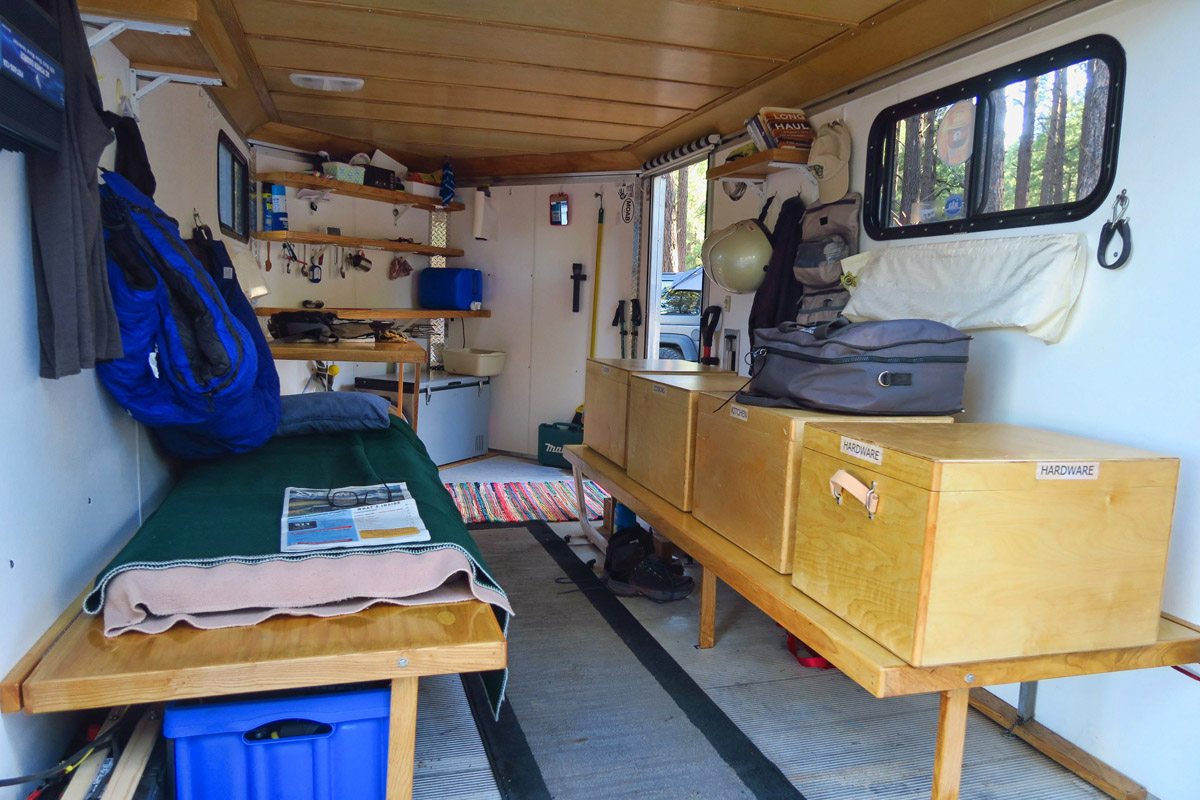 This is another neighbor Dean’s motorcycle trailer. I think he’s done a nice job with “fit and finish!” Note nice paneling on ceiling. Very cozy! Motorcycle rides in the middle. 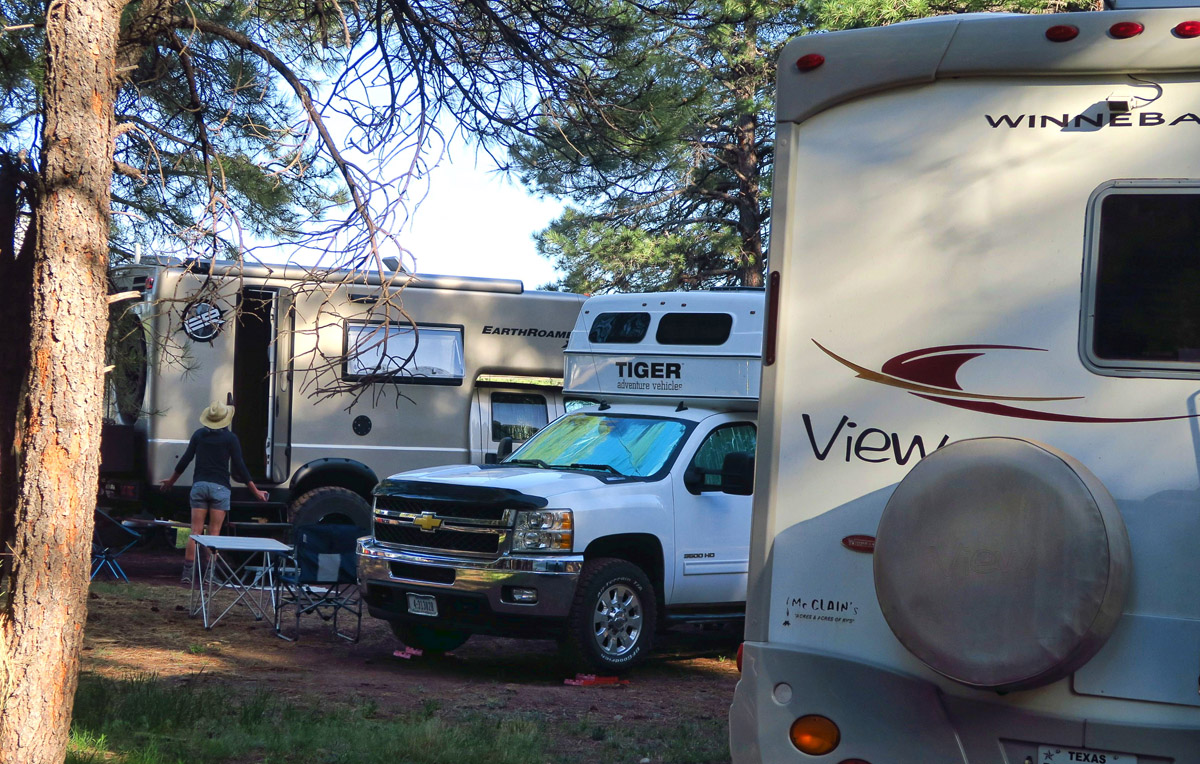 Which one of these is not like the other? EarthRoamer, Tiger 4×4, and the Winnie View! 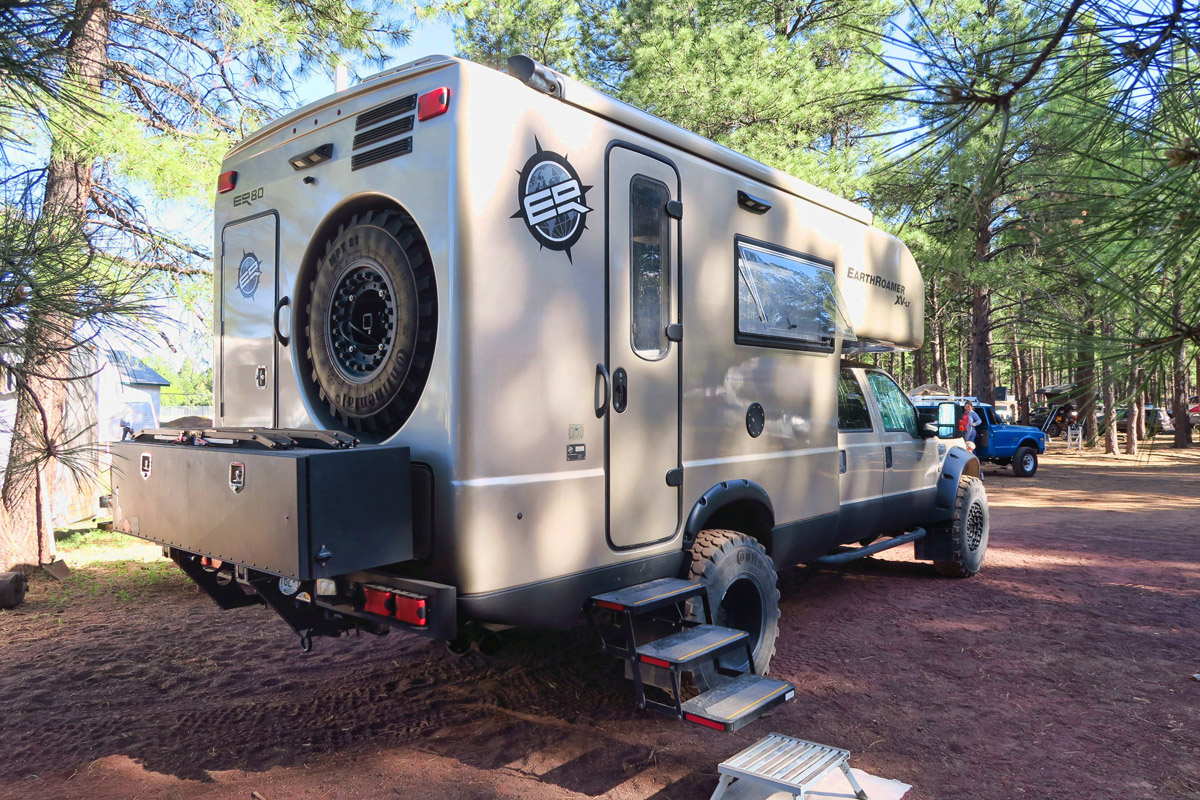 The “luxury expedition vehicle,” the EarthRoamer. My neighbors offered a tour. I was shocked how little space there is inside! Must be those cedar-lined floor to ceiling closets taking up so much space!

In exchange for twelve hours of volunteer work spread out in four hour shifts over three days, I will not only receive free admission to the event, drink coupons, BBQ dinner and a swag bag, but there is the benefit of free camping inside the Expo.  But at 24 feet, my Winnebago is pushing the limits of their “No big rigs” rule in the campground.  Cyan actually calls my tiny home a “beast,” which comes as a surprise since I have been teased in the past about living in a “Nabisco box.”  But she gets approval from her director, and I’m in! 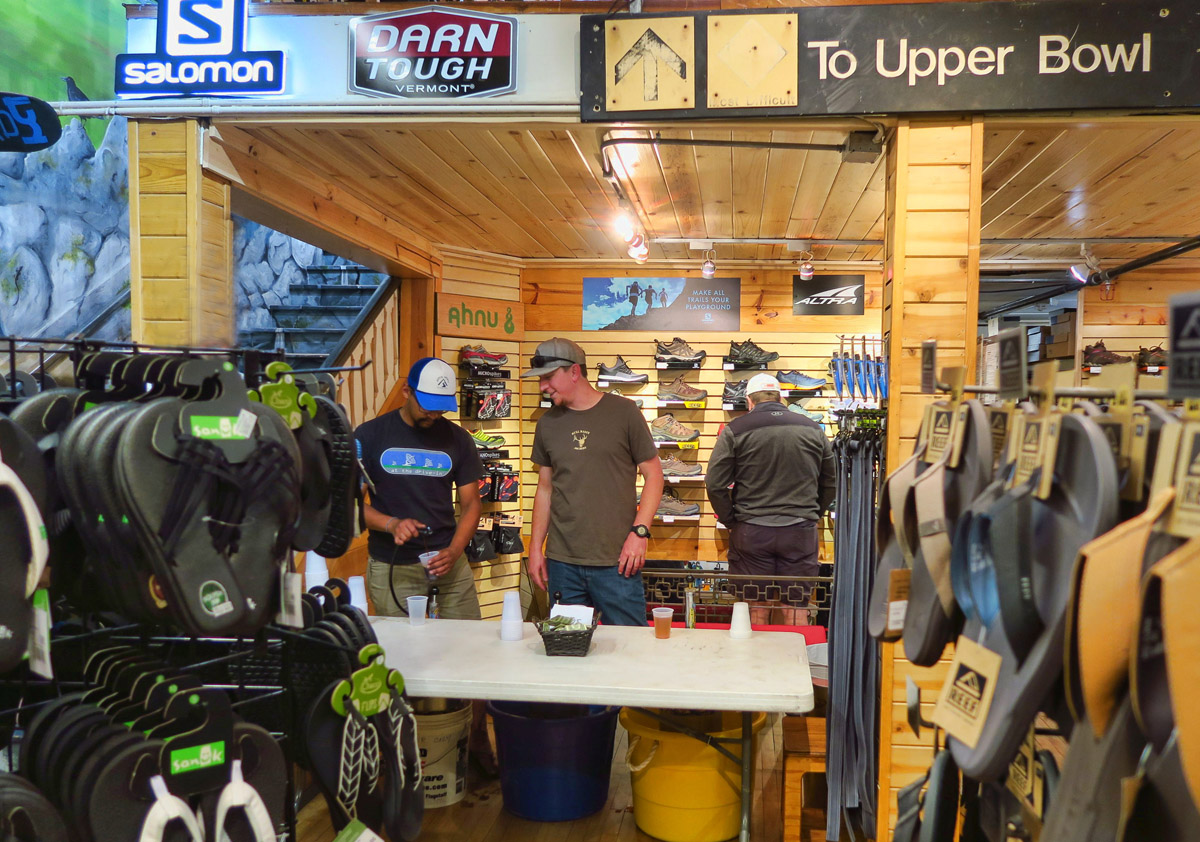 The pre-event takes place in Historic Flagstaff, “Gear and Beer” whereby the four local outfitter shops bring in kegs of beer from the local breweries to get everyone ramped up for the event. 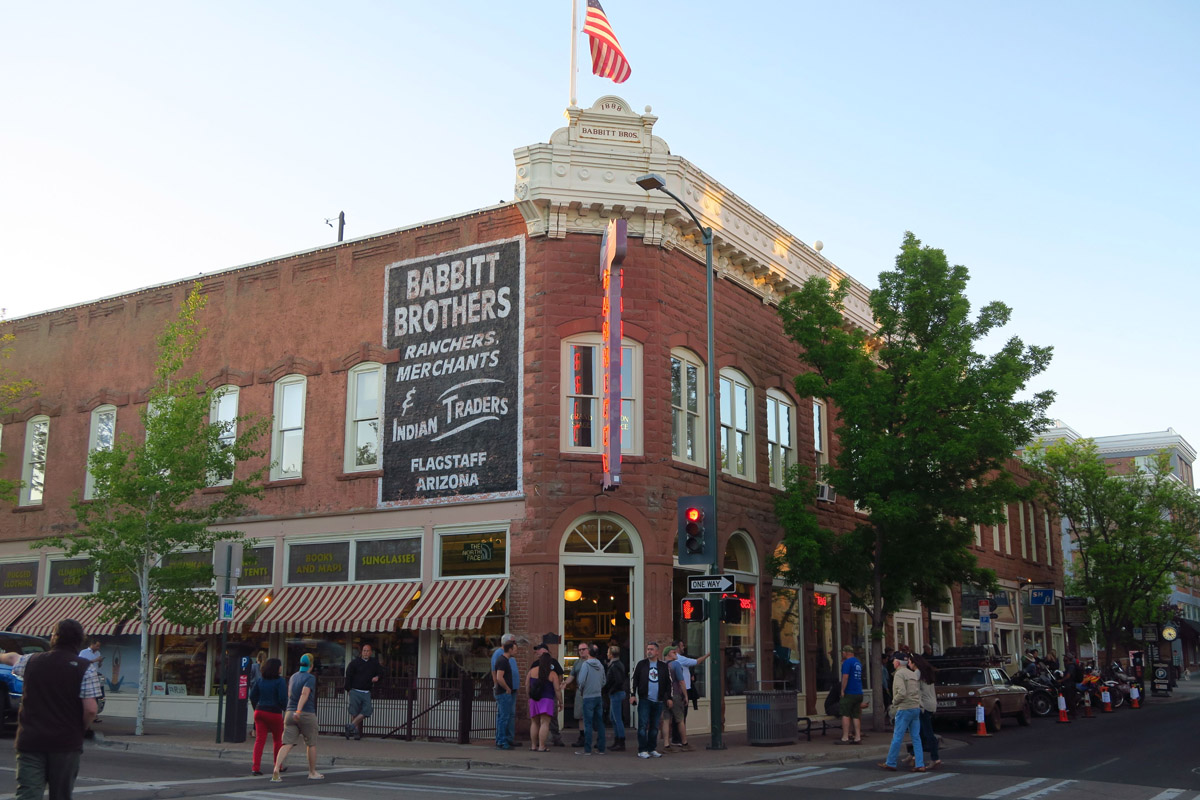 Since you can’t take your beer out into the street, outfitters have a captive audience while you shop and sip! 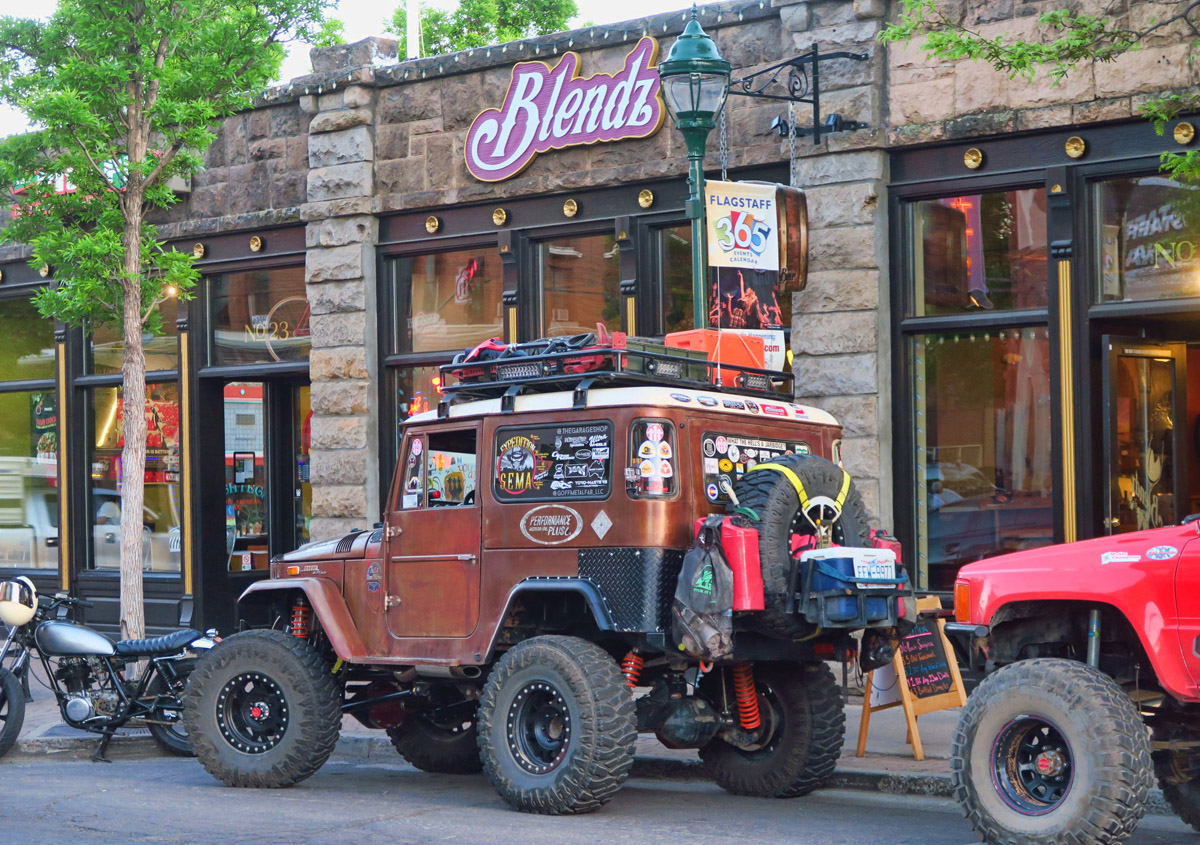 As I arrive at the Fort Tuthill County Campground, I soon understand what Cyan means by saying my Winnie is a “beast.”  Looking across the volunteer camp, I feel like a big white whale amidst tiny trailers,  tricked out Jeeps, vans, and truck campers, all perched on their 4×4 frames, their rooftop tents camouflaged by the ponderosa pines, allowing them to blend into the wall of trees in front of me.   I take my place along the outer perimeter, not daring to venture into the low hanging tree limbs and obstacle course of the forest campground. 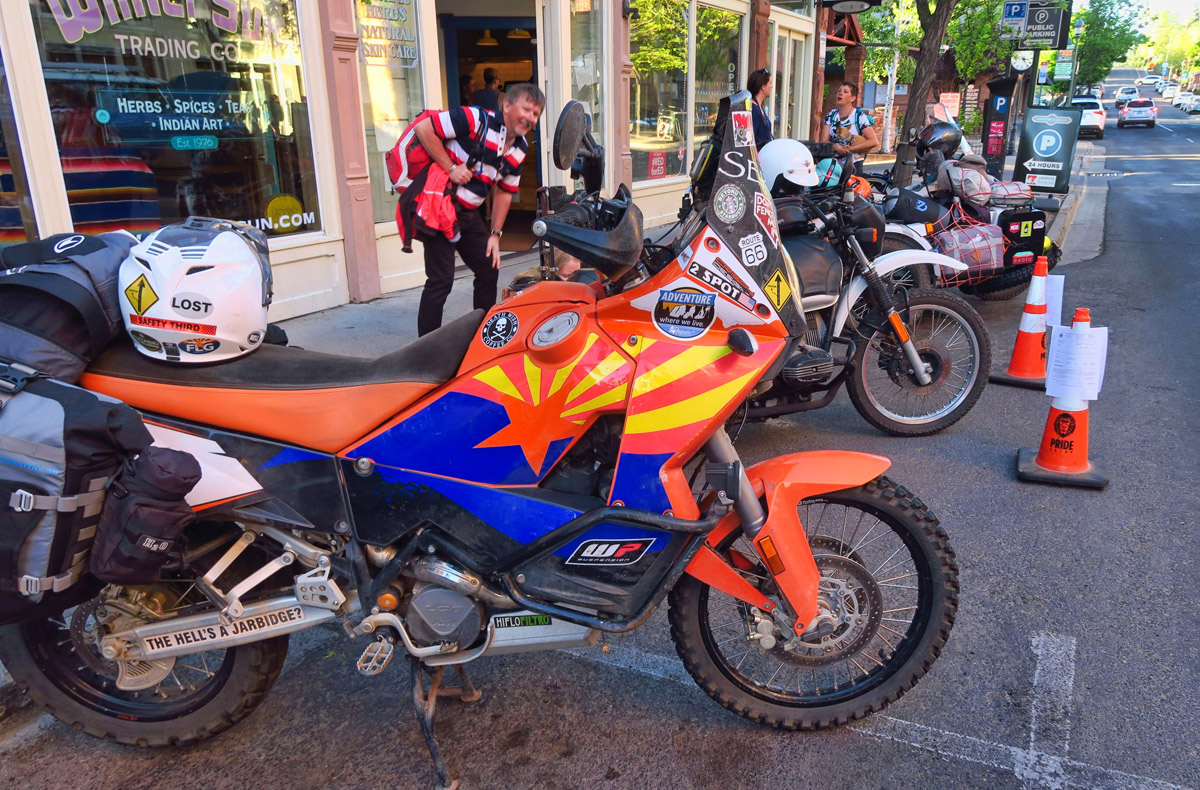 The motorcycle contingent is also well represented in the “Cool Ride Contest.” 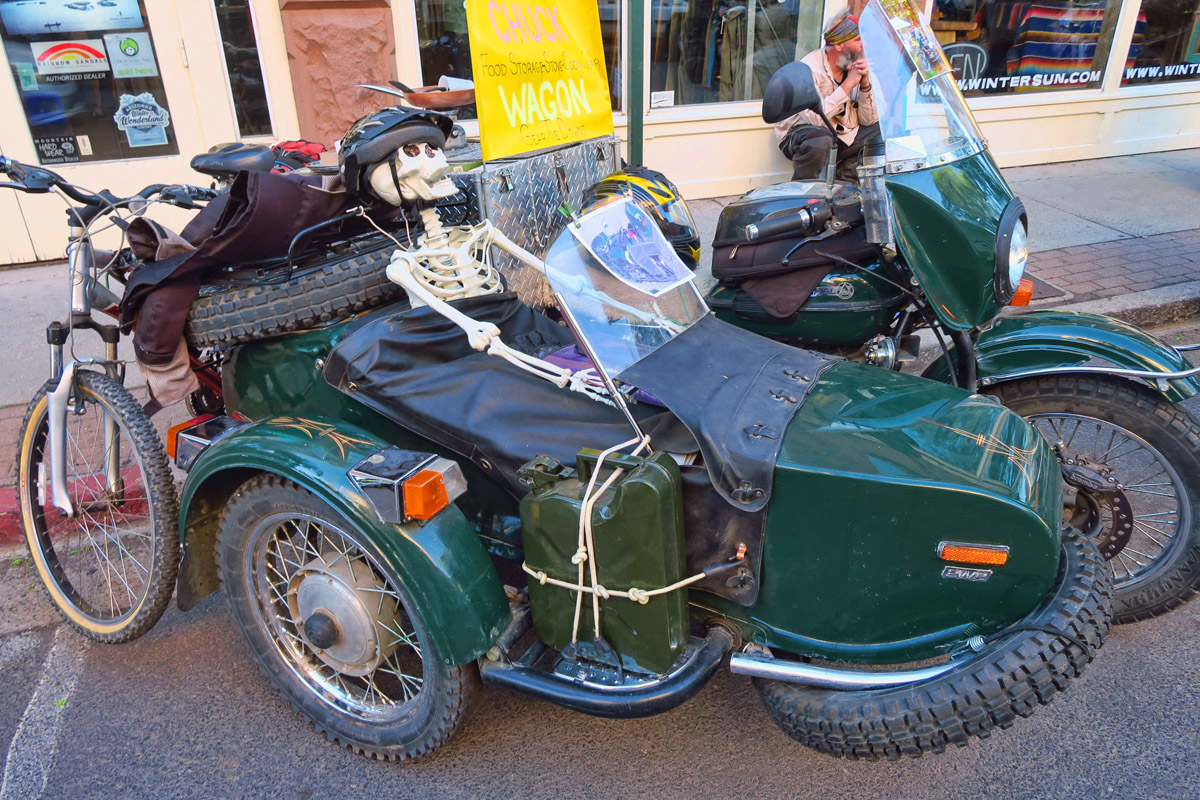 Ever notice how many side car drivers have long, handlebar mustaches? I wonder if it’s their need for symmetry to offset their asymmetrical rides? 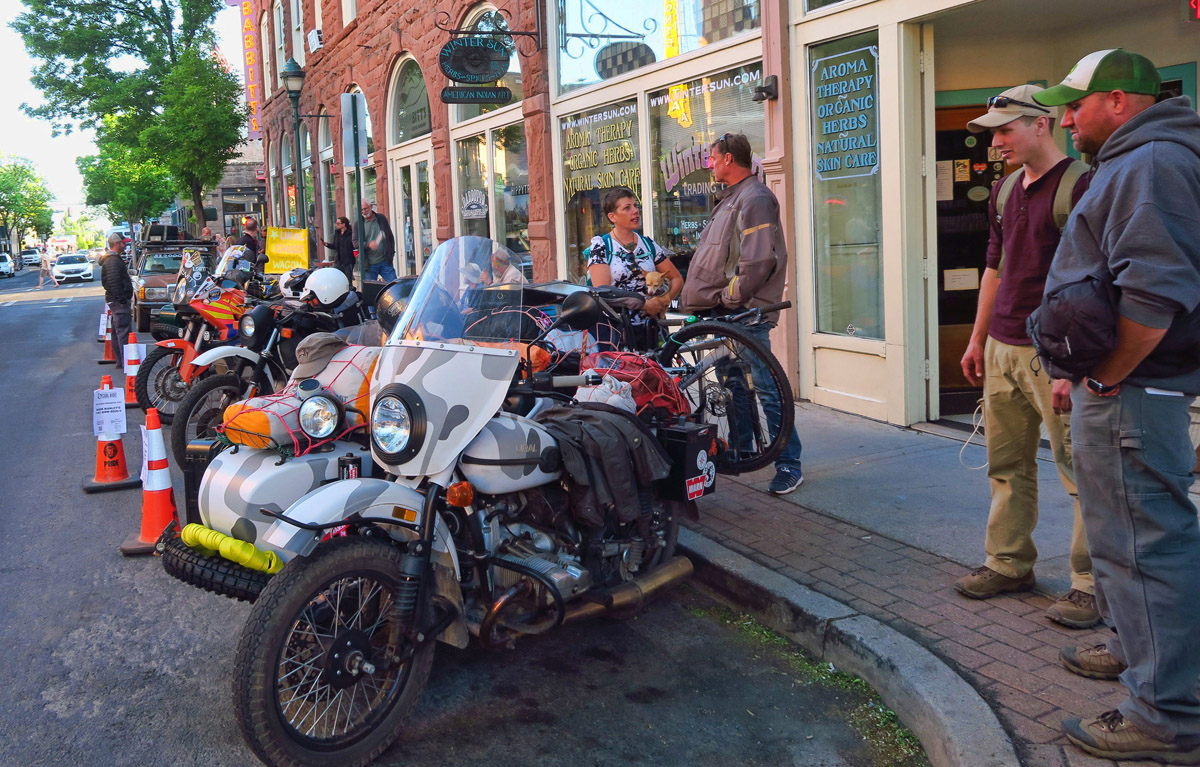 I soon have company along the outer perimeter, though.  Alongside me pulls a couple more rigs my size…a Tiger 4×4, followed by an Earth Roamer.  Although they are near to my size, their off-road capabilities and high ground clearance expose me for the imposter that I am.

The Expo kicks off with a “pre-event” in Historic Downtown Flagstaff on Wednesday before the three day weekend. “Beer and Gear” is a partnership between the local gear shops and breweries in town. Flagstaff is large enough to support four different outdoor outfitters and just as many breweries, so they partner together to offer craft beers on draft inside the store while you shop for all your outdoor gear needs. This is also an opportunity for all the contenders in the “Cool Ride Contest” to park along the streets and show off their entries. It’s a fun way to sample some of Flagstaff’s local brews, patronizing their local outfitters, while getting a preview to what’s to come over the weekend. 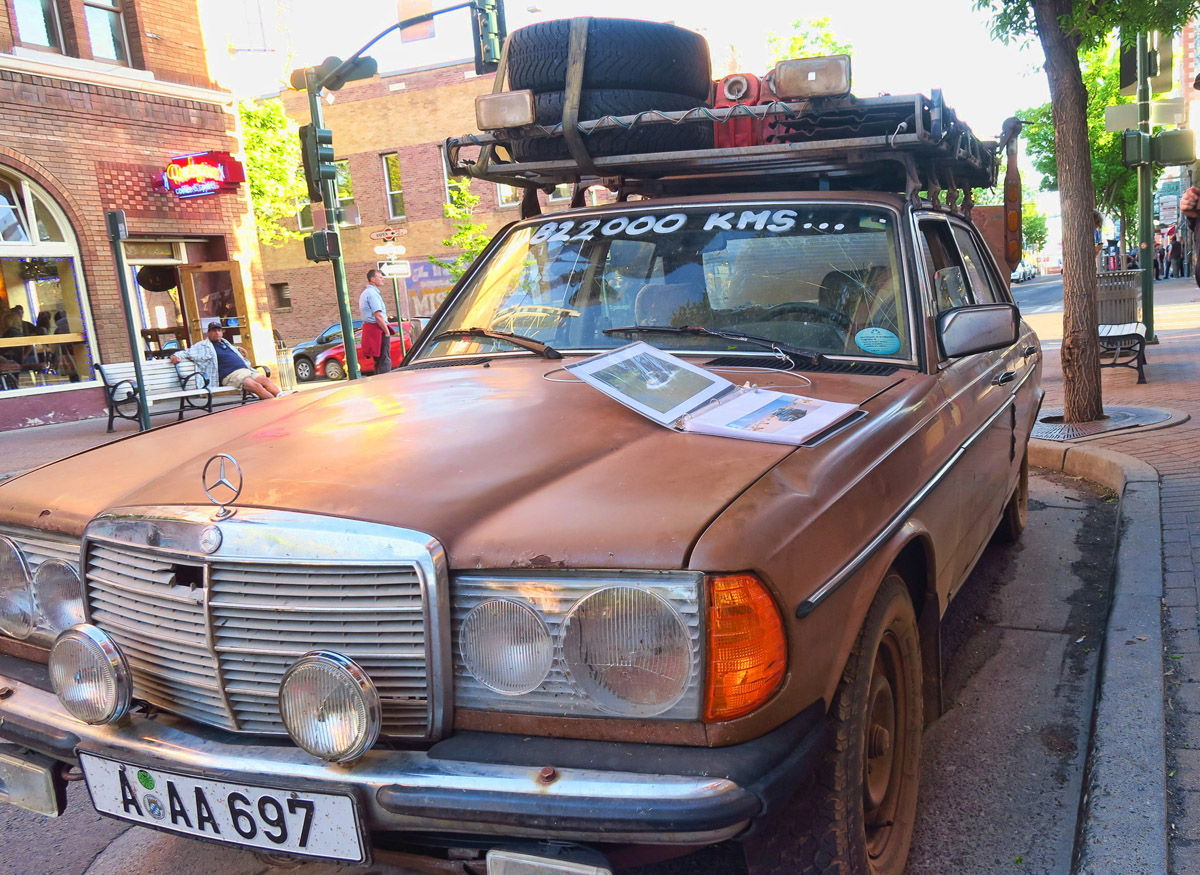 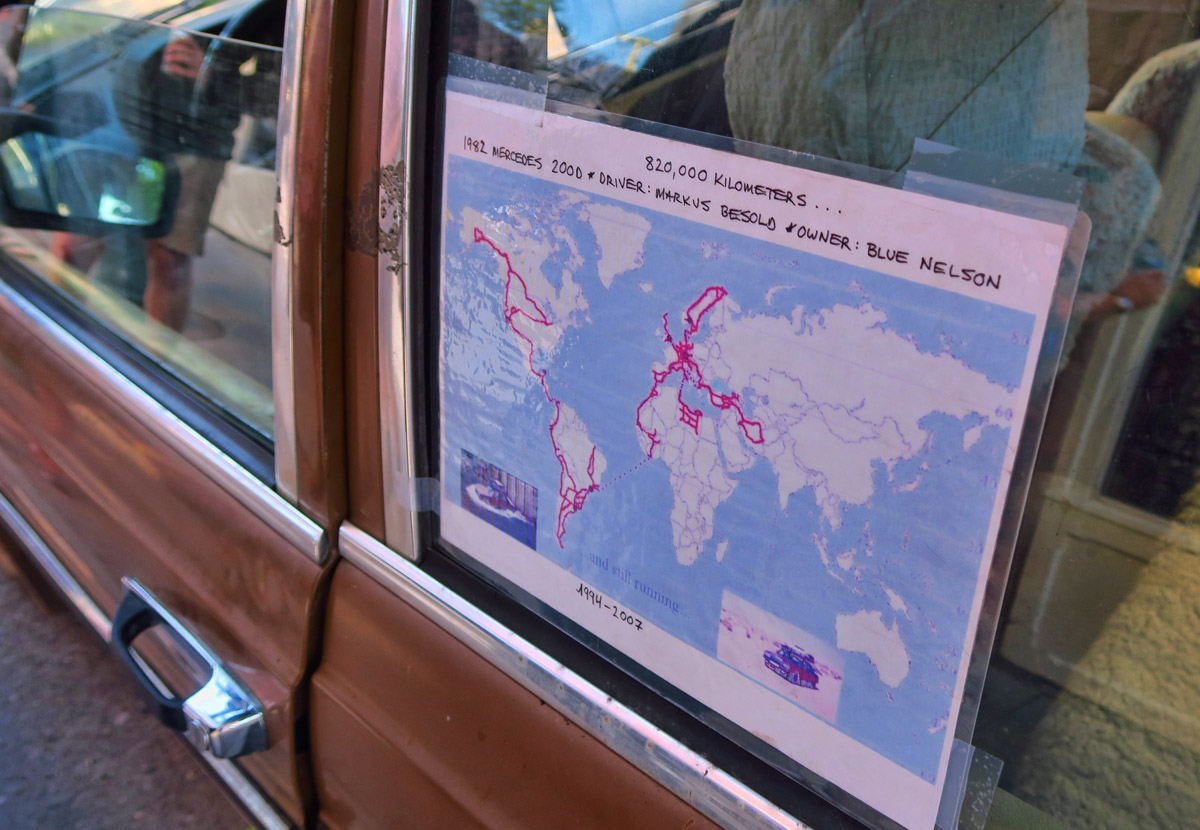 Here is where it’s been…I’d say he’s no overland imposter! 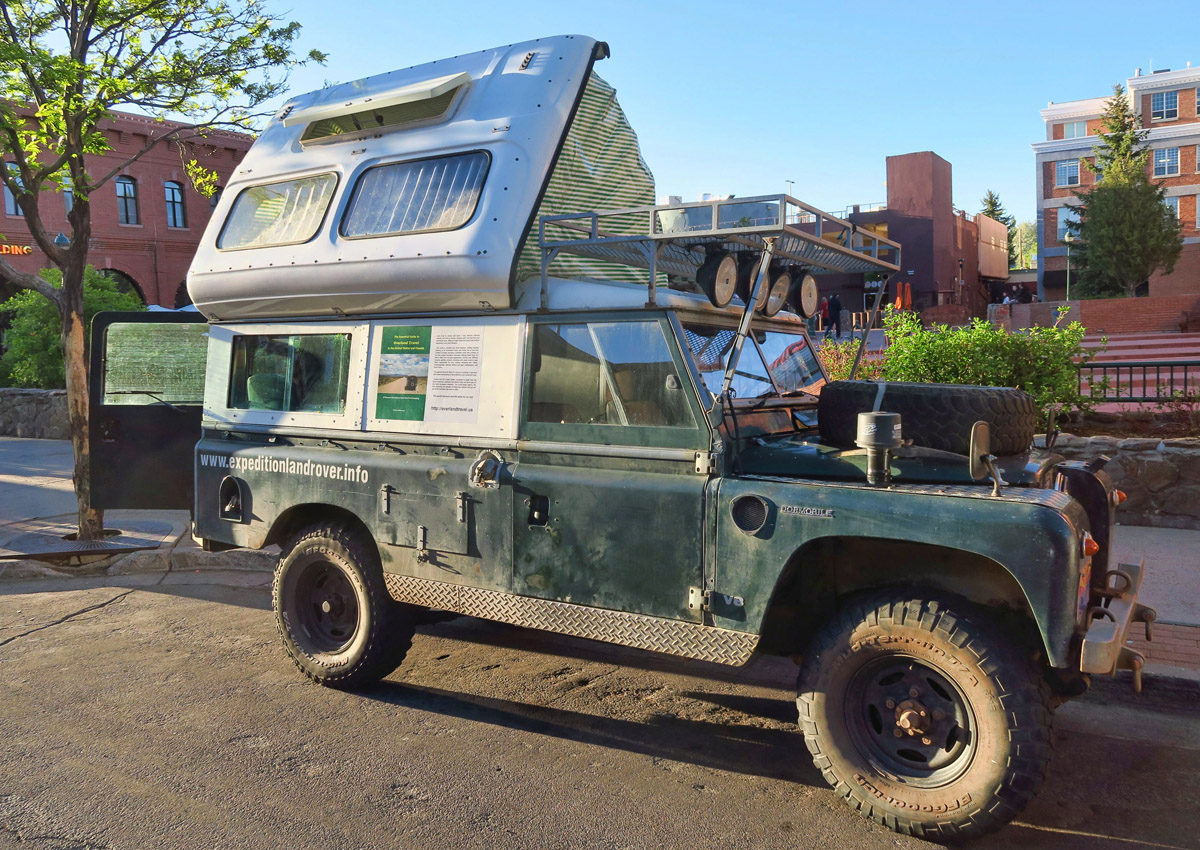 COMING UP NEXT….More Imposter Syndrome at the Expo….

11 thoughts on “Finding Fun in Flagstaff”