One might think that with a name like Rocky Mountain National Park, it would be all about the mountain peaks, right? After all, the park is made up of mountain ranges with 78 peaks exceeding 12,000 ft, so one can expect a spectacular mountain view anywhere you go. In fact, that’s the difference between the west side with more heavily forested views, versus the east side marked with stark mountain cirques carved by glacial ice, deep canyons, and jagged spires.

Although I enjoyed my time on the west side, I wasn’t really “wowed”…or gobsmacked by the beauty.  It was pretty ordinary scenery for what one would expect from Colorado, save for the moose. But once I got to the east side, I saw what all the hoopla was about, as it wasn’t just the altitude that took my breath away.

But it isn’t just about the mountains in Rocky Mountain National Park. It’s also the water! Seems every trail follows a stream past a waterfall to a beautiful lake. Rinse and repeat. There are 156 of them in fact, 48 of which contain native trout populations. As Van Morrison would sing, “Oh, the water!” And just like Jim, “it stoned me to my soul.” 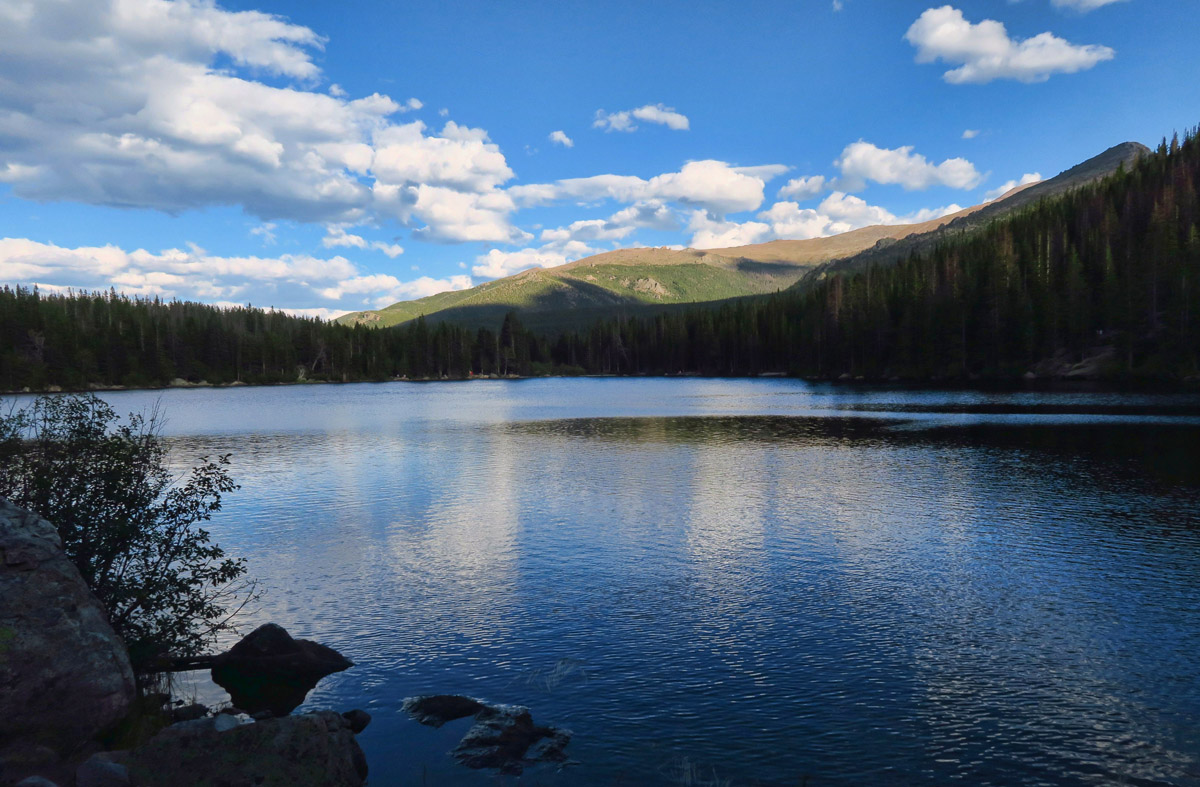 Bear Lake has an ADA accessible paved path all the way around, complete with signs giving percent of grade for wheelchairs. 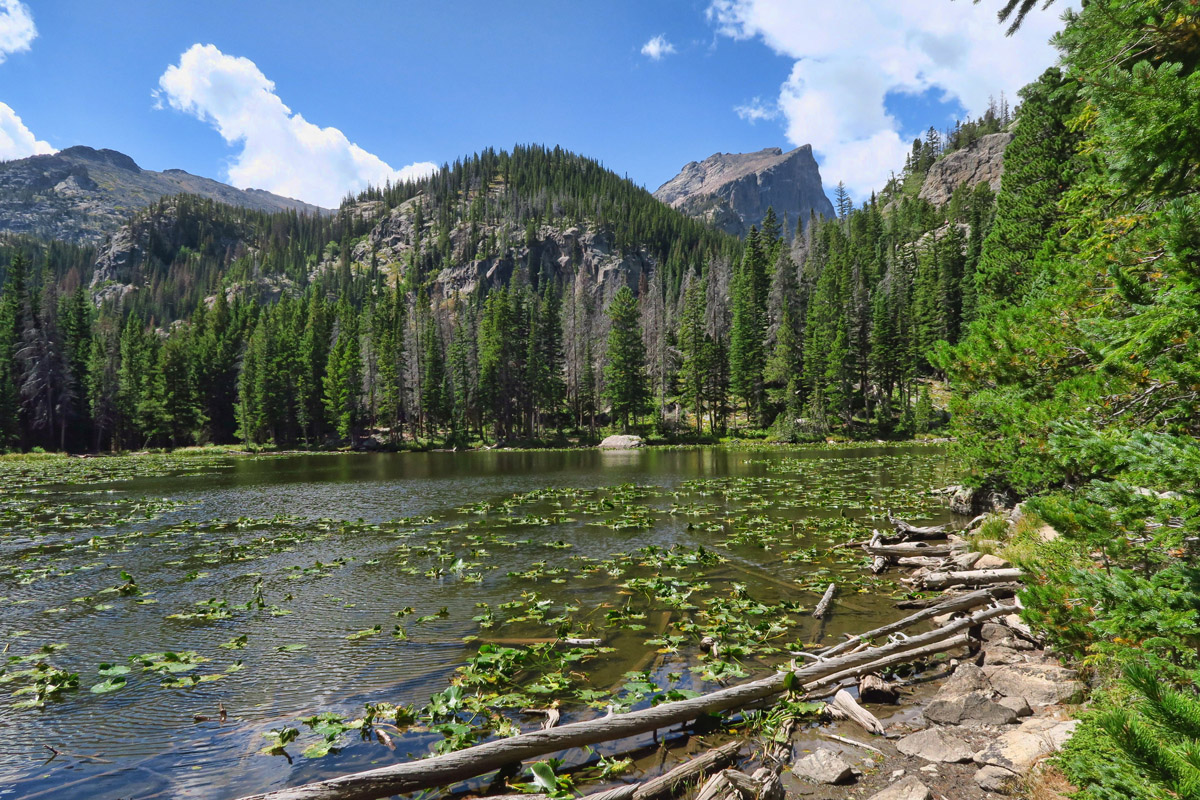 Next up on my Five Lakes Loop is Nymph Lake, dotted with pond lilies. 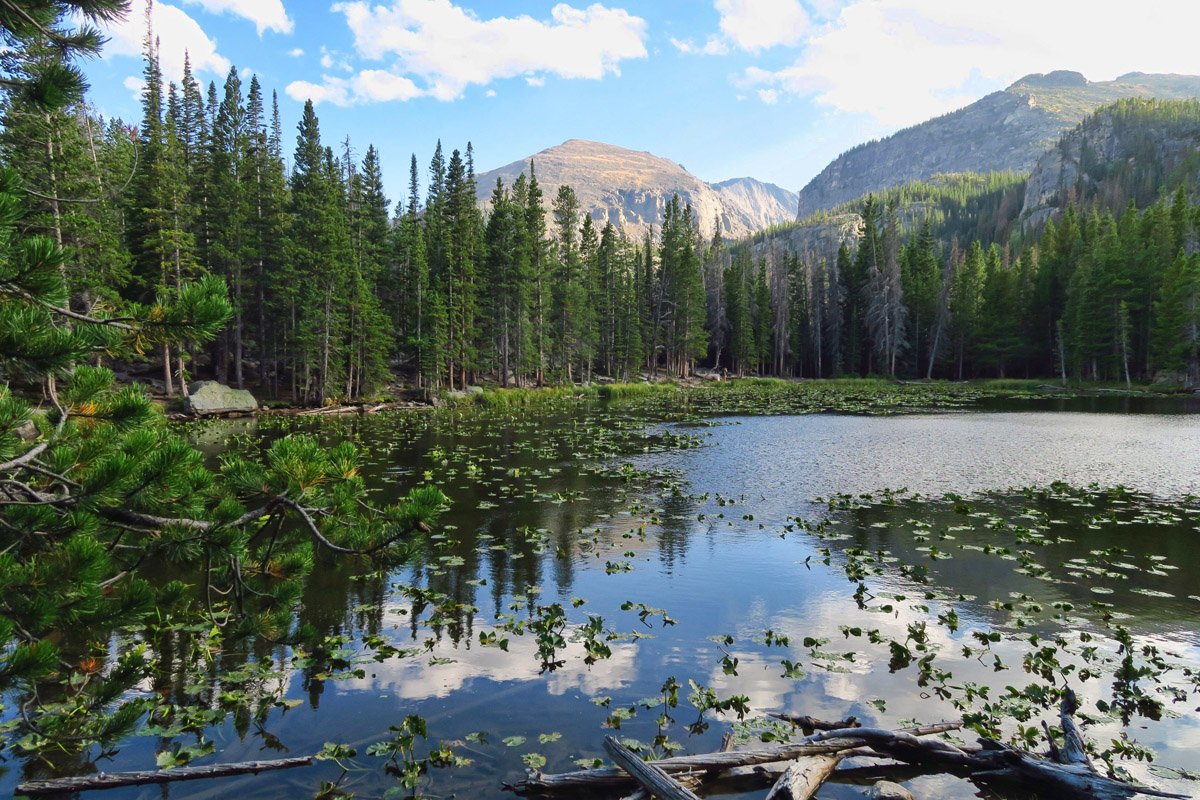 Nymph Lake is only about a half a mile up from Bear Lake, and half the path is paved, so it can be a little crowded. 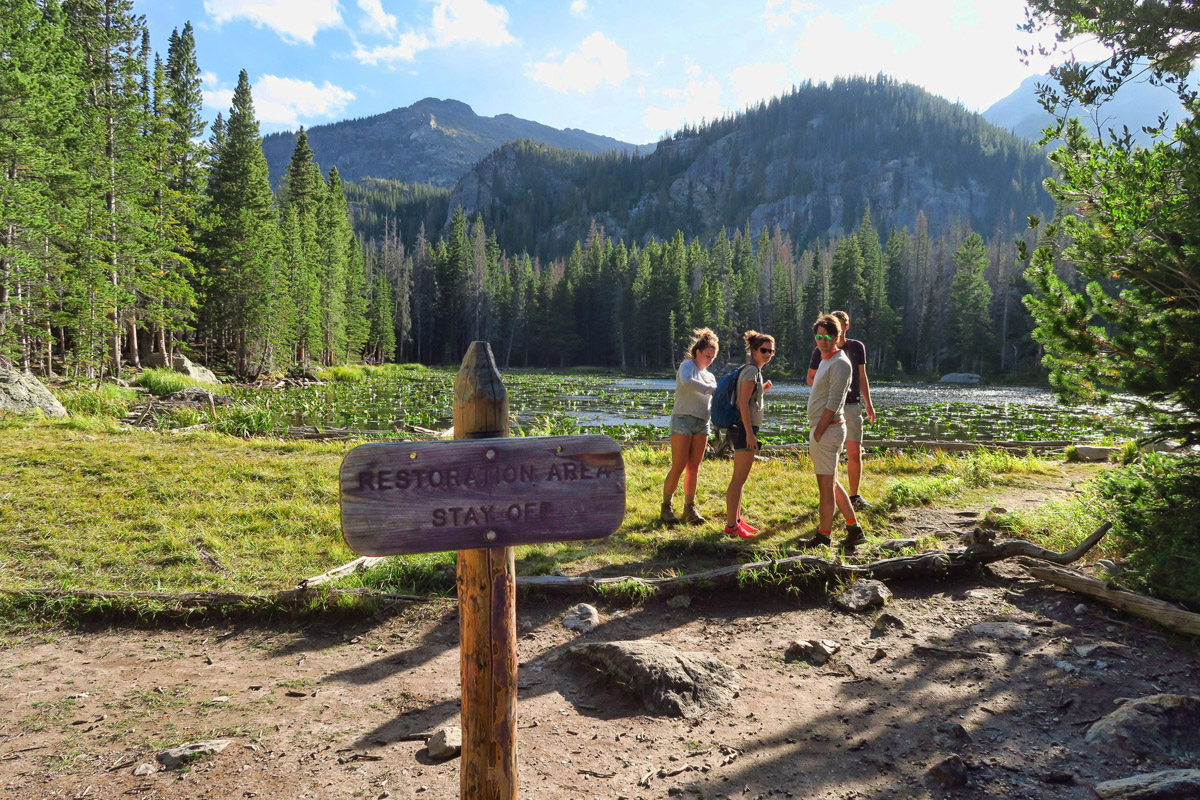 Why is that woman taking our photo?? Maybe it’s because you are standing behind a sign that says “Restoration Area. Stay Off.”

One of the most popular hikes in the park makes it possible to visit five different lakes in one loop. It starts out at Bear Lake just yards from the parking lot, with an elaborate ADA accessible path. It’s the closest opportunity for a “drive by shooting” of a lake where visitors need only walk a few steps from their car for the family photo.

The paved path continues on up to Nymph Lake, beckoning crowds to follow. But fewer and fewer continue on around the loop to Dream Lake, with only a handful continuing on up the increasingly steep trail to Emerald Lake. It’s like a game of Super Mario, the higher the level, the greater the reward. By the time I reach the fifth lake on the loop, Lake Haiyaha, I have it all to myself. 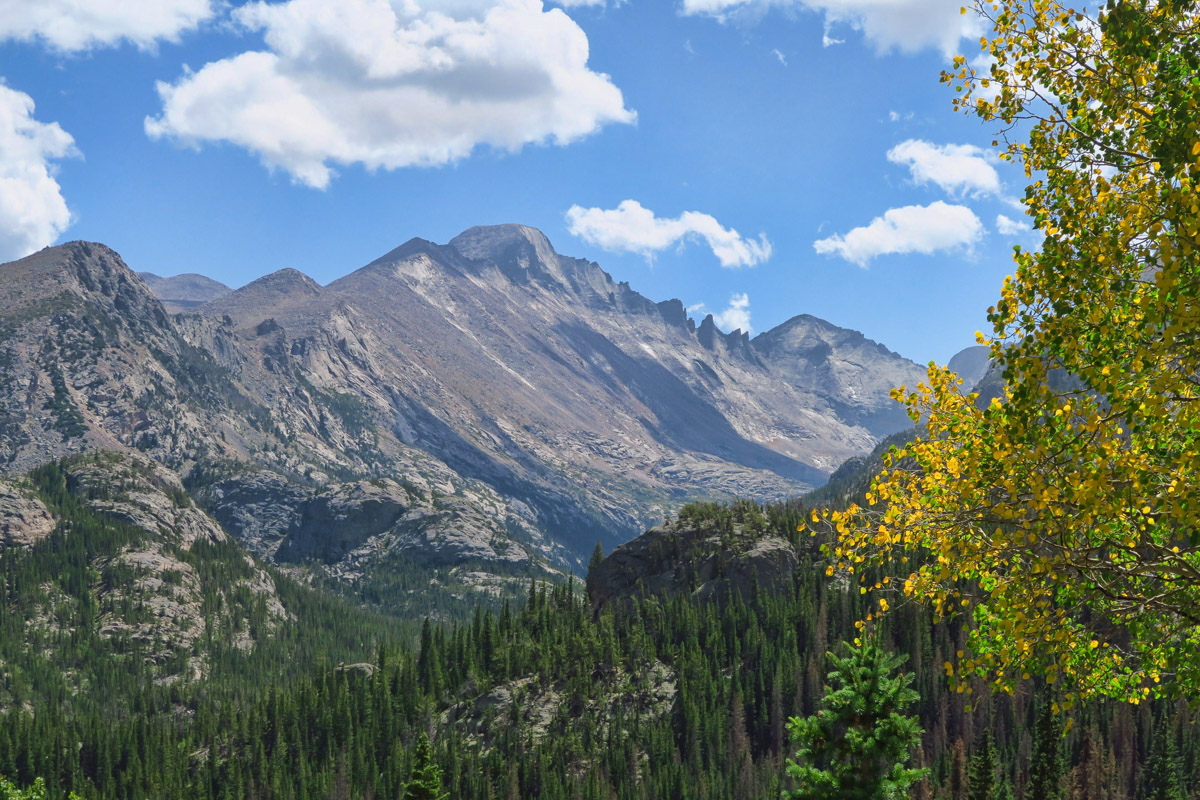 Leaving Nymph Lake, the path starts to climb bit. I am excited because this is the first turning Aspen I’ve seen this season. 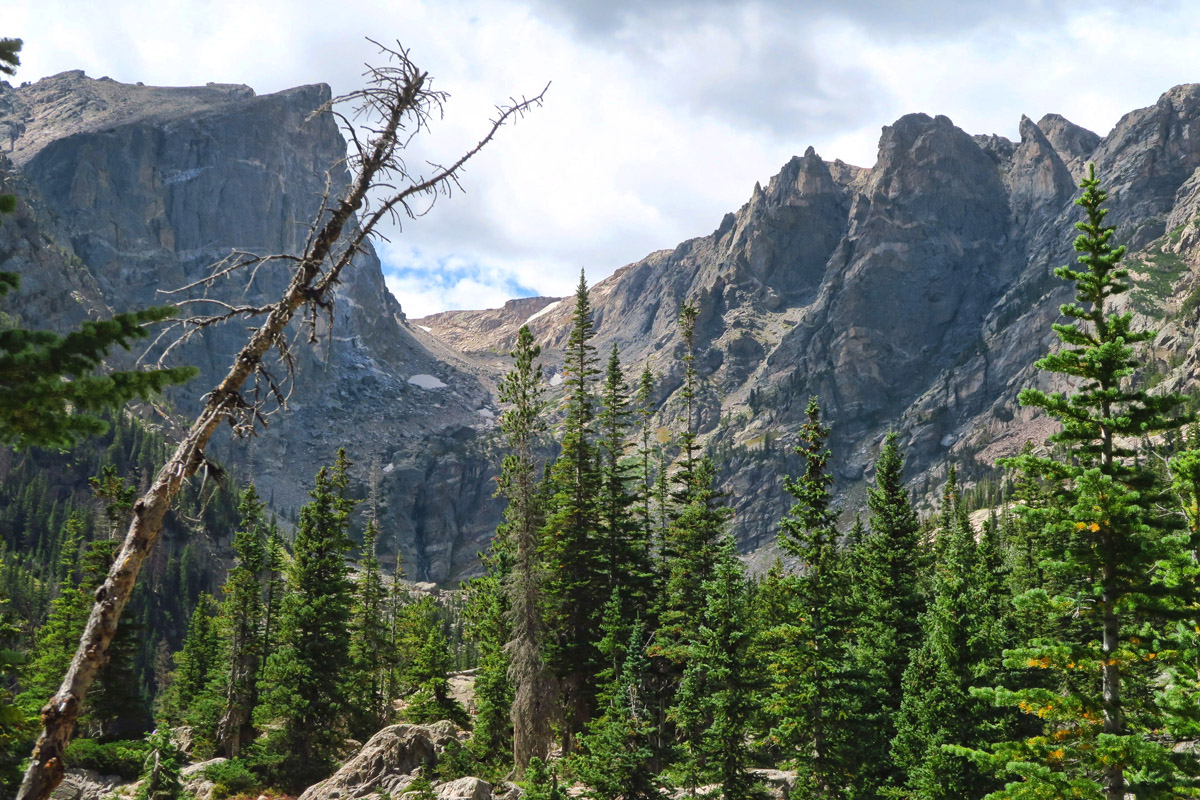 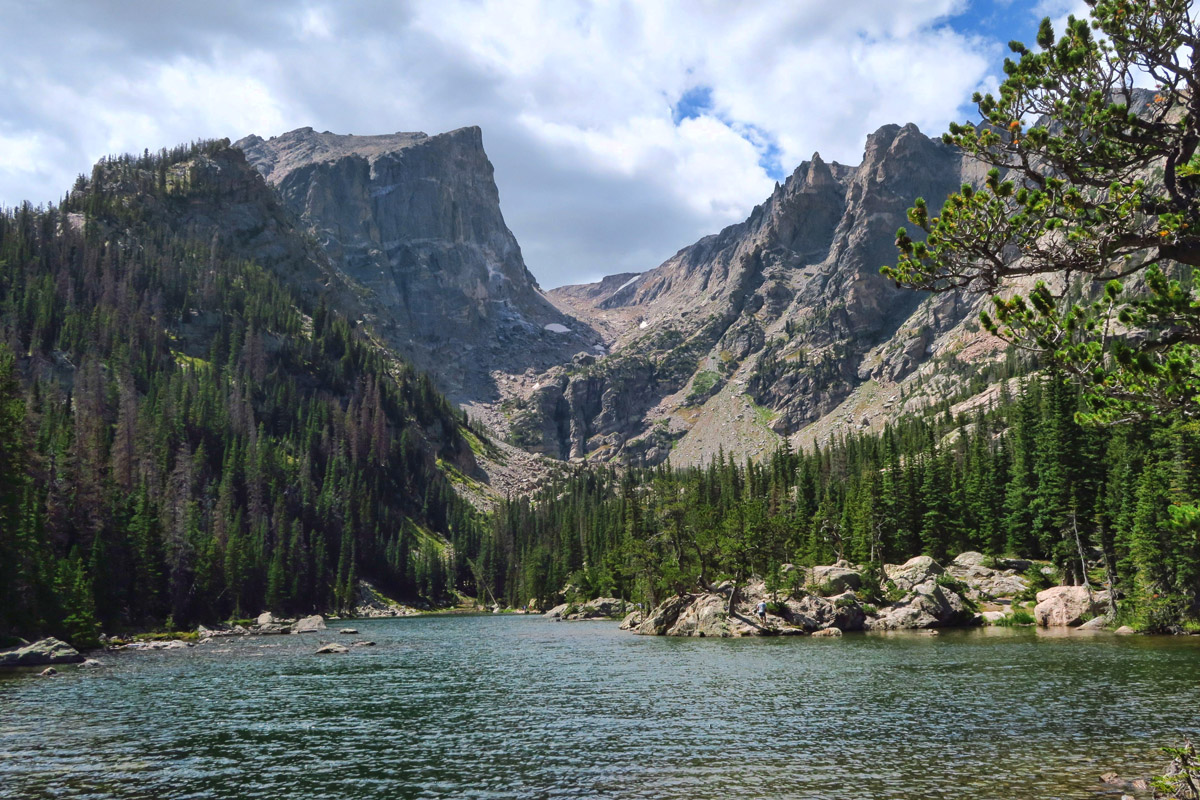 Dream Lake is stunning on this gorgeous day. 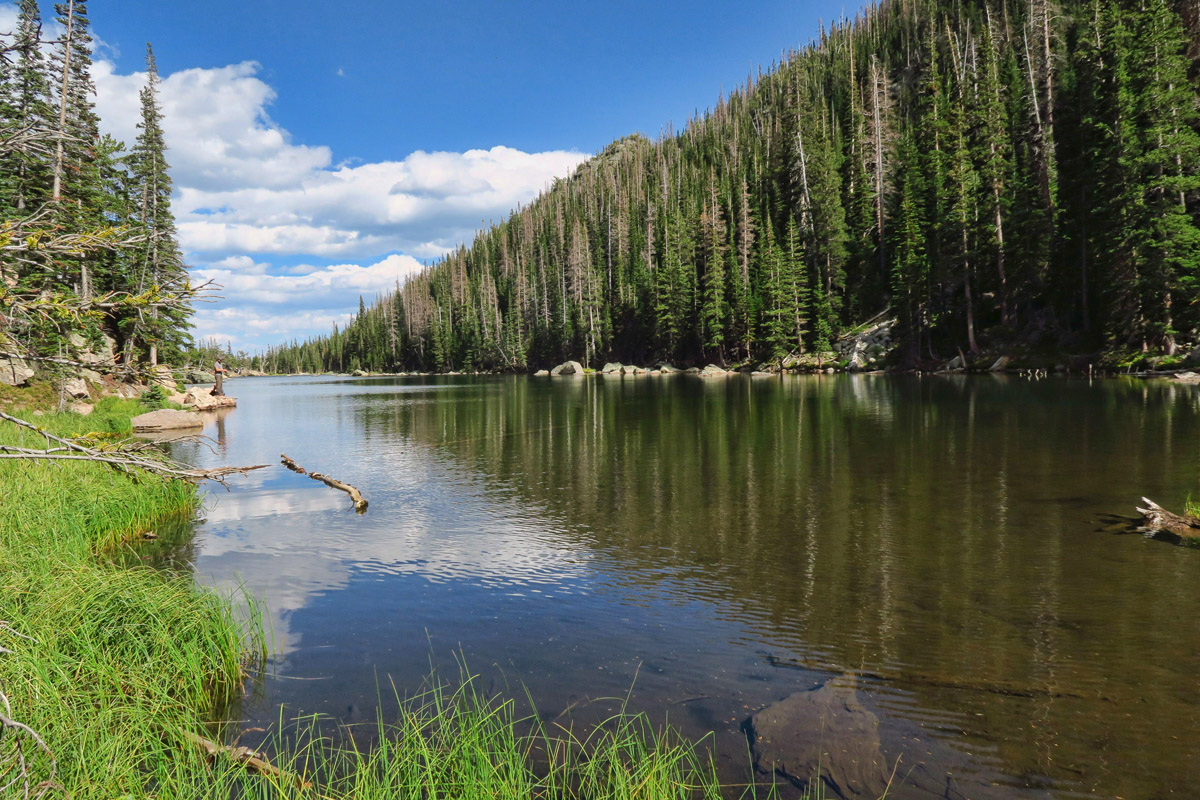 Easy to see how Dream Lake got its name, as it is truly “dreamy!” 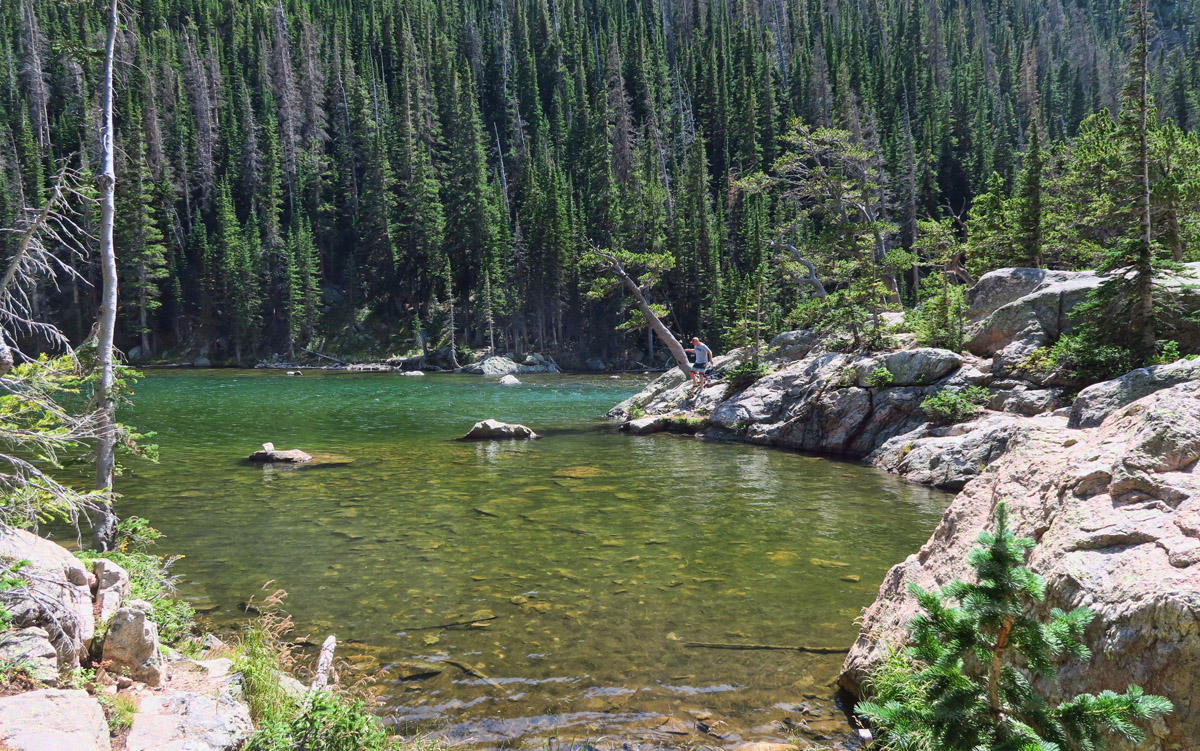 There are quite a few fly fishermen along the lake. I stop and talk to one of them. Somehow, our conversation takes a turn toward the more personal, as I tell him it’s 2 days from my deceased brothers birthday. Stephen loved to fly fish, and I am wearing his favorite Cabelal’s Guidewear hat. 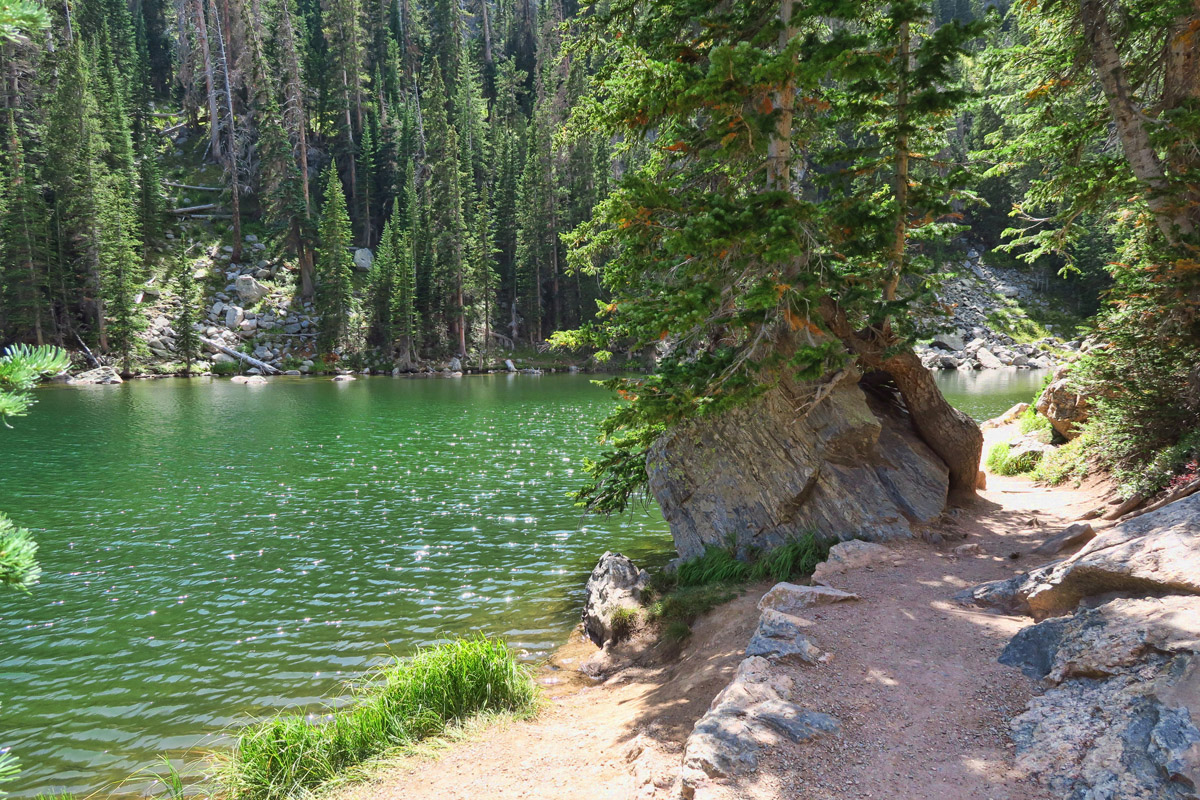 While talking to the fisherman, I stand and watch as I can see half a dozen trout below us in the clear Dream Lake. 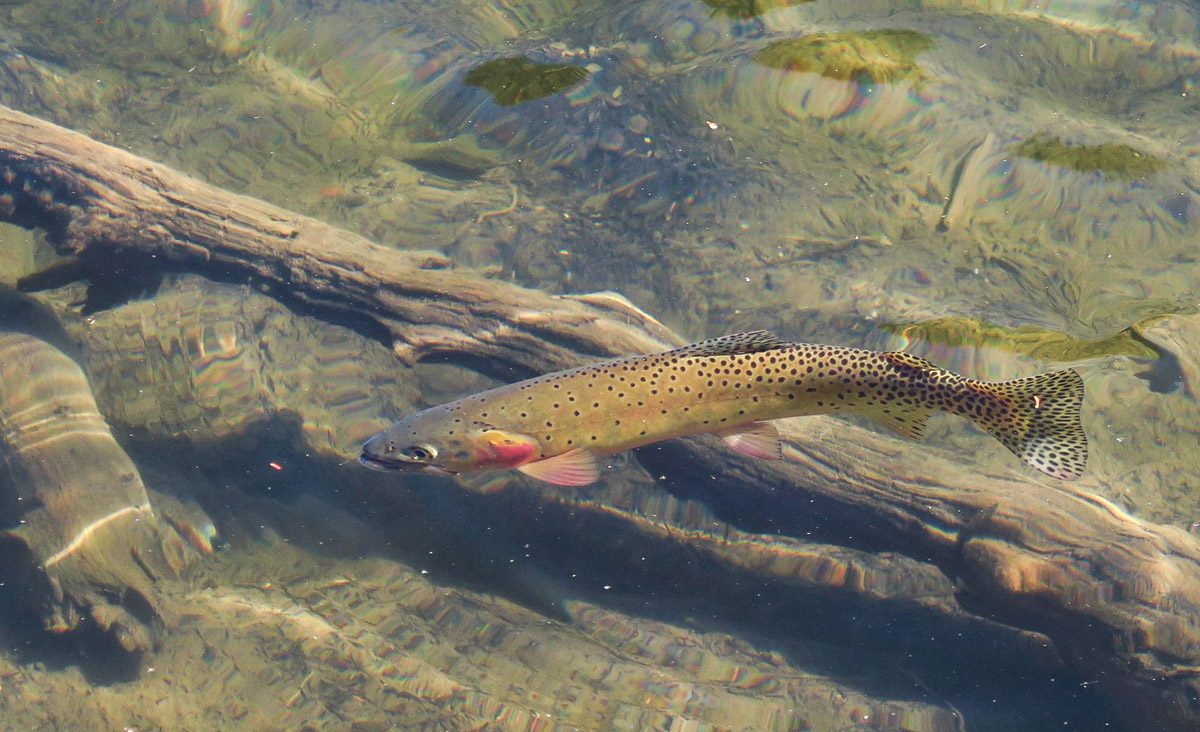 Greenback Cutthroat Trout, native, but threatened species. Fishing in RMNP is catch and release only.

I hike six days straight on the east side of Rocky Mountain National Park, each day no less than seven miles. I love an all day hike. Pack a lunch and just meander at my own pace all day. I had so much fun constructing different hikes utilizing the shuttle system. It was truly freeing and liberating being able to “compose on the fly,” piecing trails together to construct my ideal length, combining shorter trails into longer rambles until my legs ached and my feet throbbed. 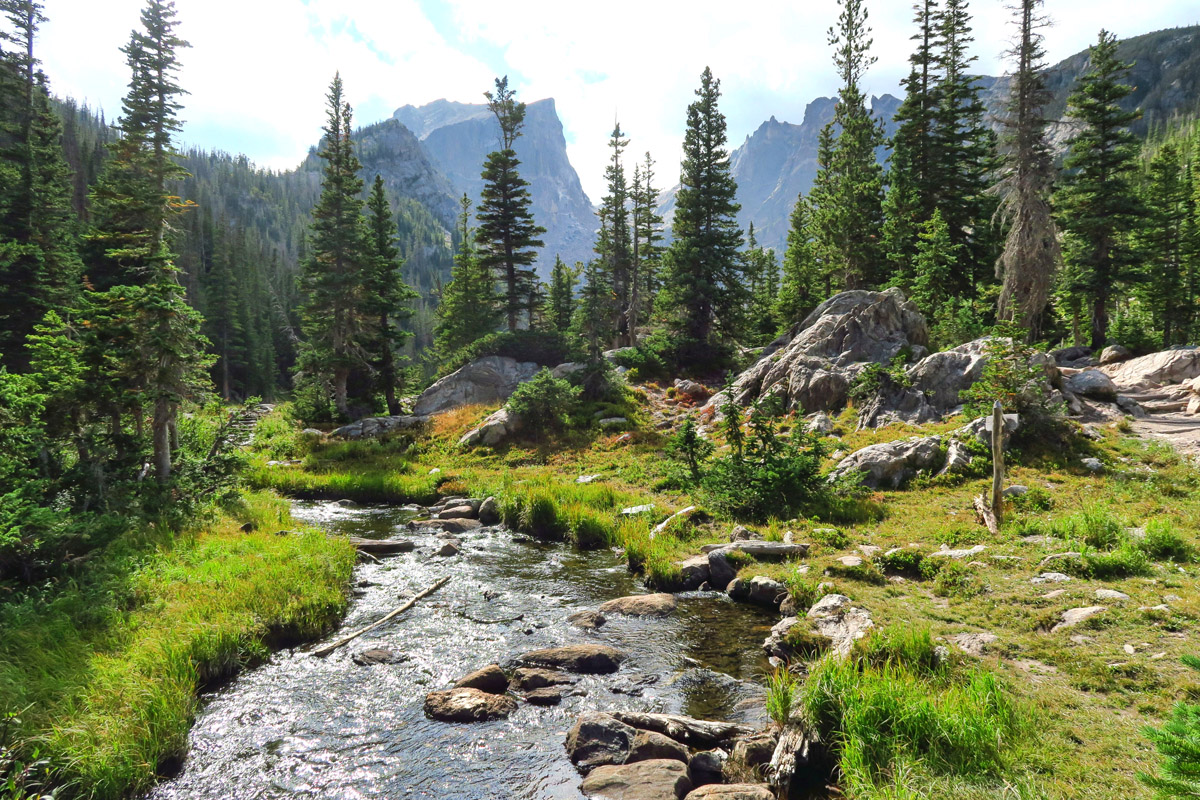 From Dream Lake, the hiker has two choices…continue on up to Emerald Lake, or turn left and do the loop. I am going to do both… 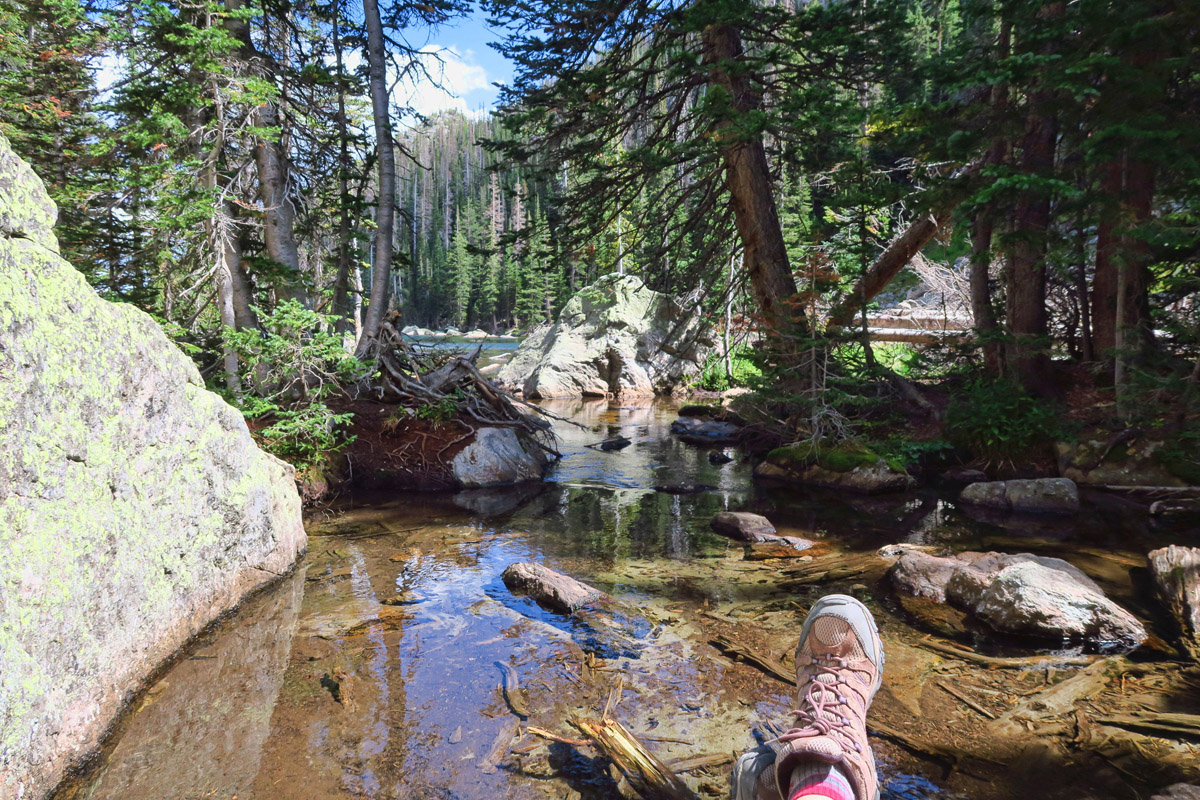 …but not without a lunch stop first! 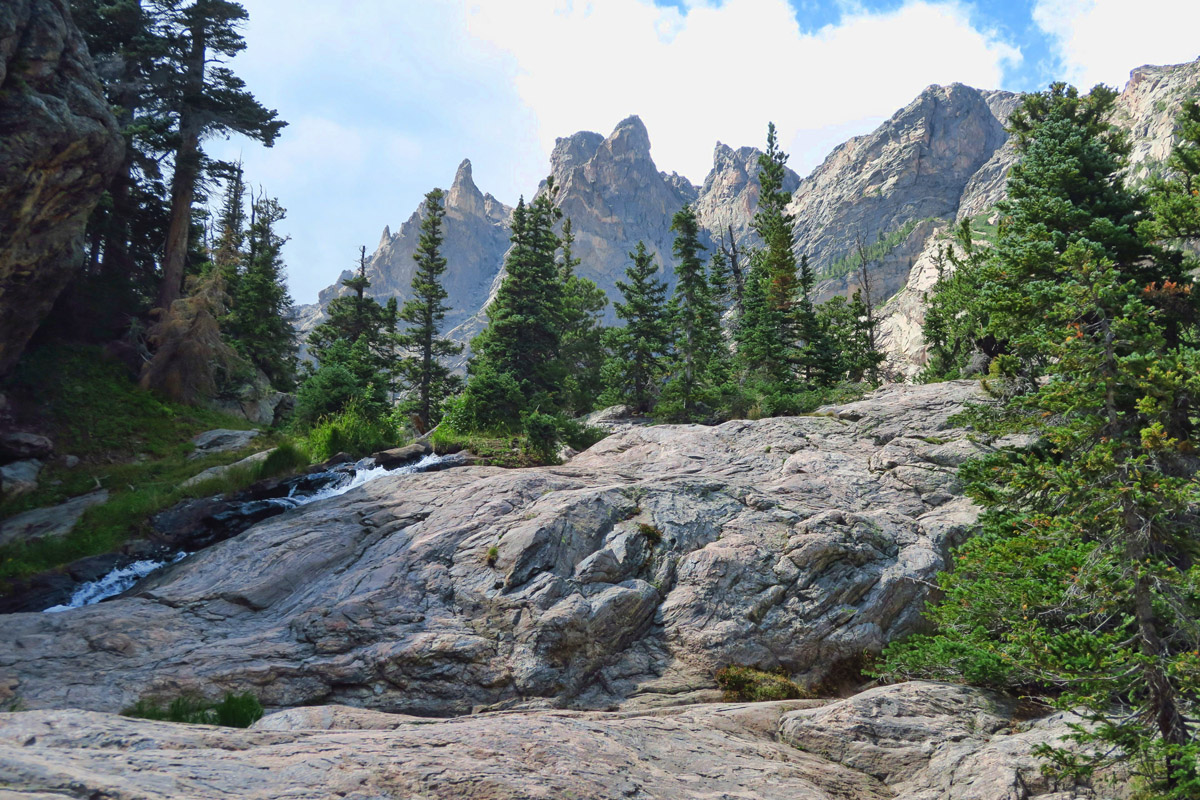 In addition to the lakes, there are lovely, serene waterfalls along the path. (Note small falls on left.) 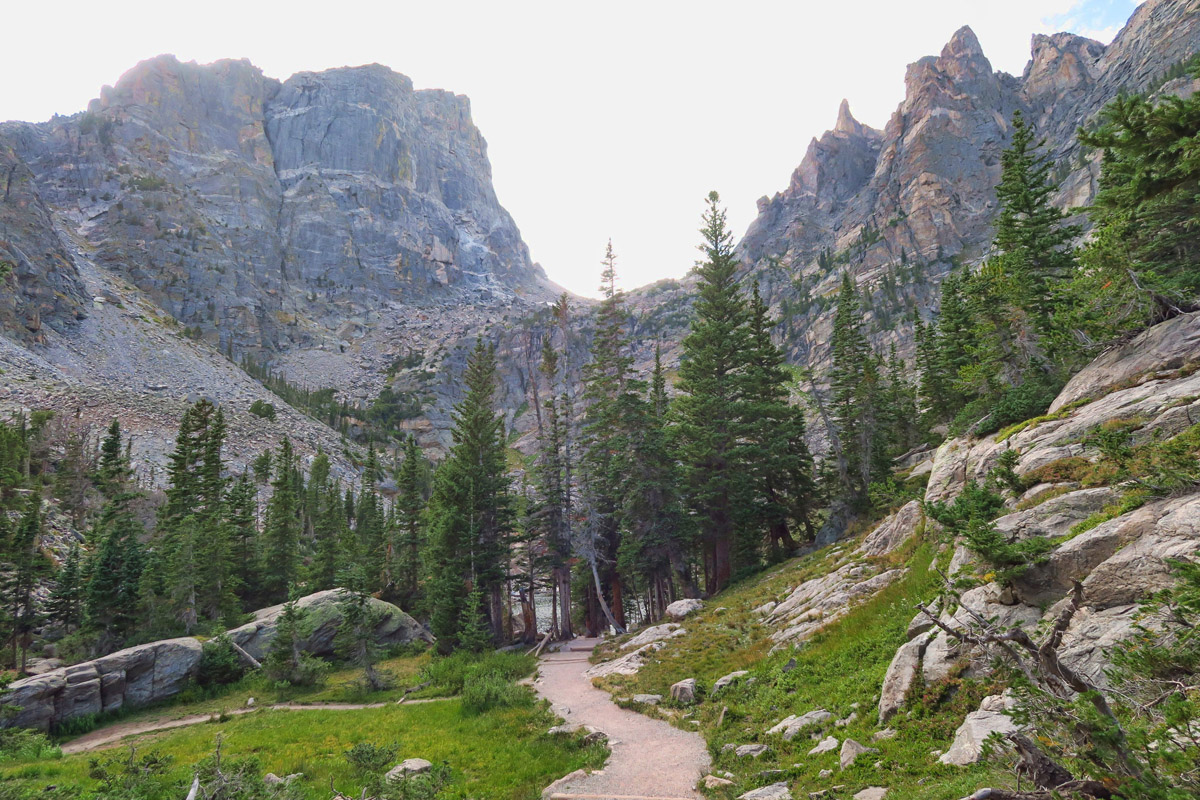 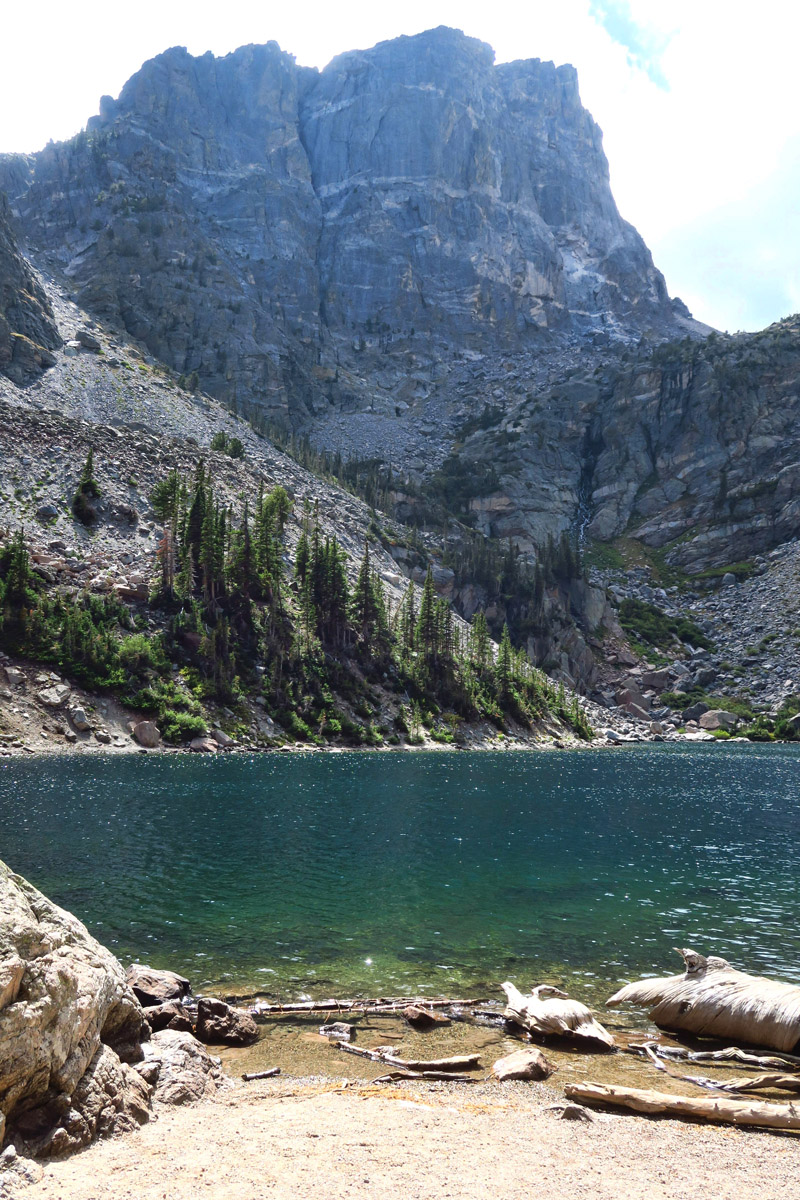 Emerald Lake is another couple of miles up from Dream Lake, and it’s a bit steep, but worth it! 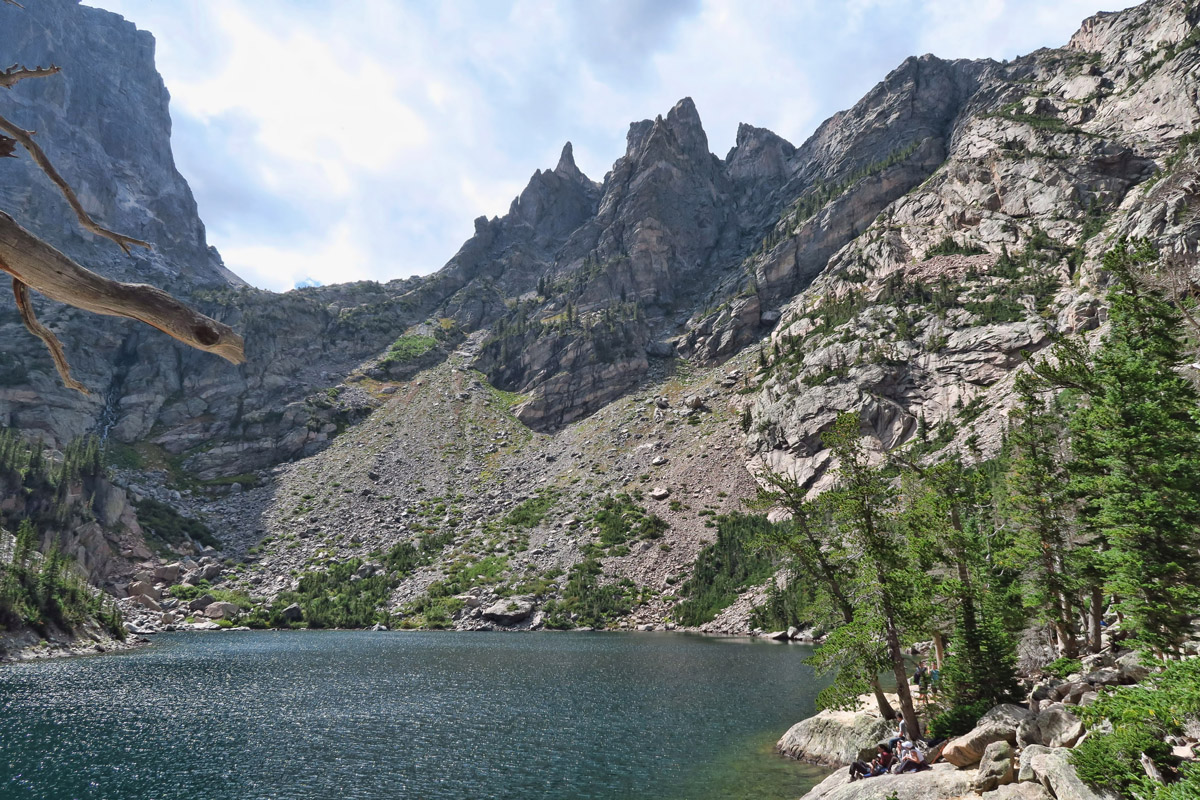 Much of this area was carved by the Tyndall Glacier, giving the lakes their cirque shape.

But there was one sobering thought that loomed ever present on my mind during my stay. A hiker went missing while I was there. He was believed to be headed up the Keyhole Route, approach to Long’s Peak, Rocky Mountain National Park’s highest peak at 14,259 ft. At the risk of judging, he was believed to have left out at 2:00pm. Wearing sandals. That could almost be questioned as suicide, but who am I to say?

RMNP ranks third among the national parks in search and rescue missions, with 165 incidents in 2017. Five of those resulted in fatalities.  Grand Canyon was first with 290, while Yosemite was second with 233.  In that same year, Rocky Mountain spent $138K in rescue expenditures, sixty percent over budget.  Part of this is due to increasing attendance in the national parks.  I suspect part is also due to social media outlets where people exchange extreme selfies for likes….and in some cases, lives. 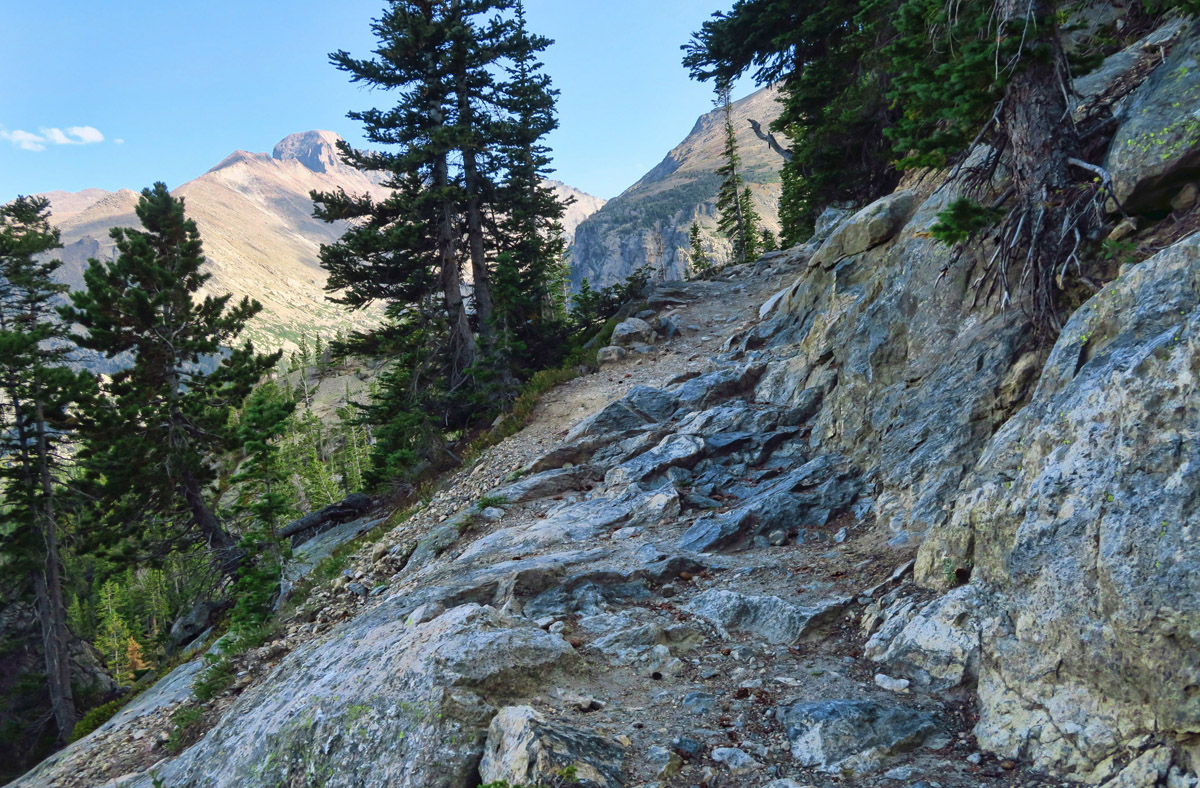 To reach my fifth lake of the day, I backtrack to Dream Lake, then begin the climb to Lake Haiyaha. 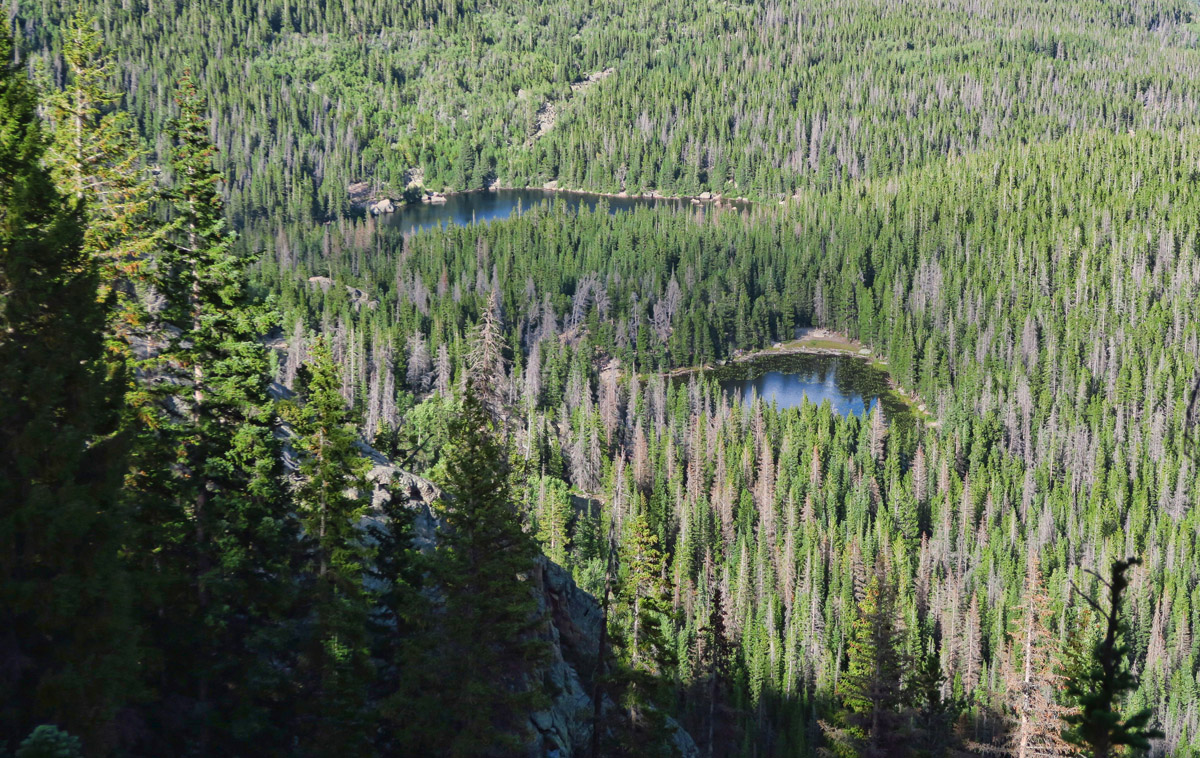 Looking back down over Nymph and Bear Lakes. 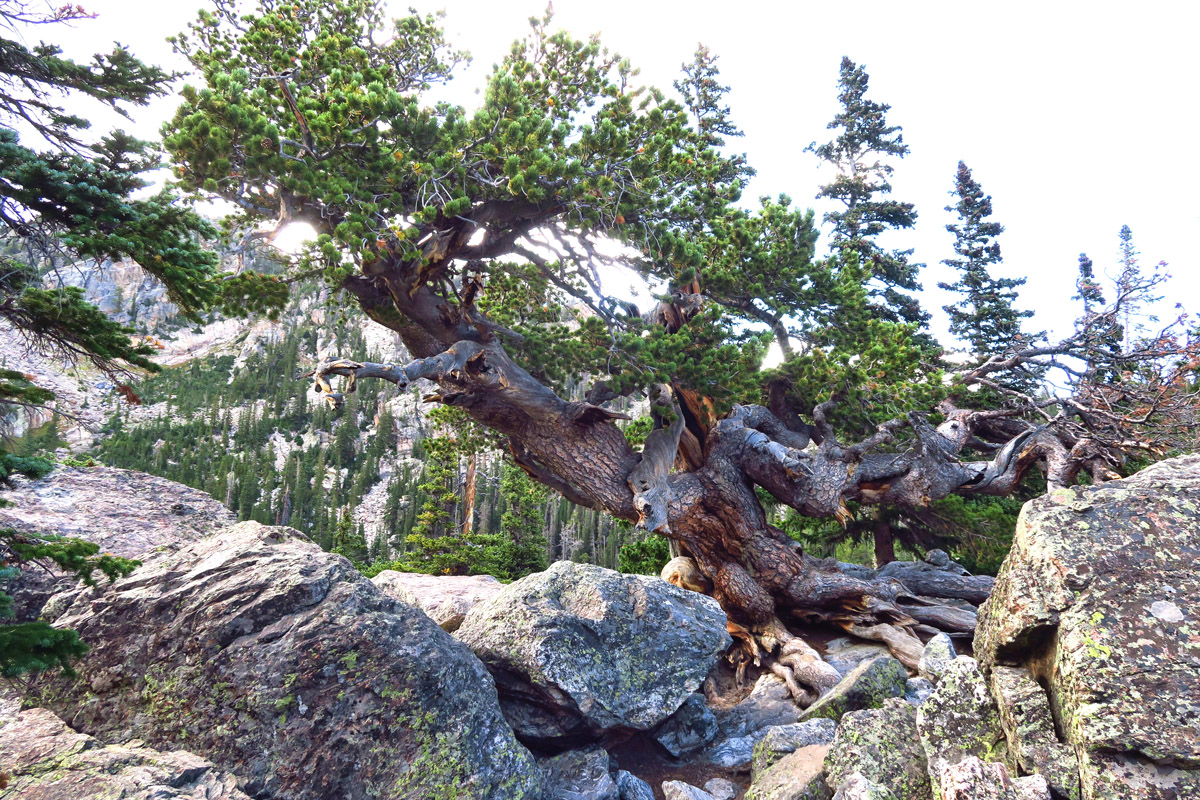 Lake Haiyaha is surrounded by giant boulders, making it challenging to get to the waters edge. This giant, twisted pine is the landmark to follow for lake access between the boulders. 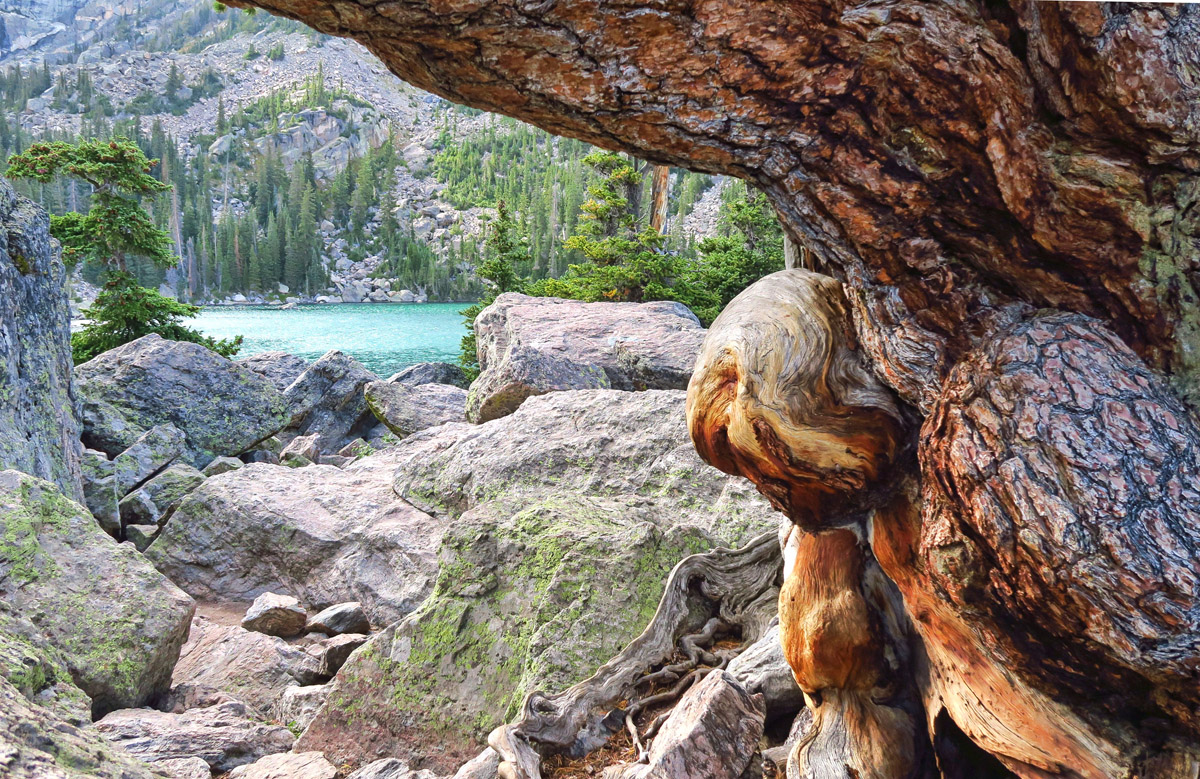 Once you cross under the twisted trunk of the pine, you get a first glimpse of Lake Haiyaha. 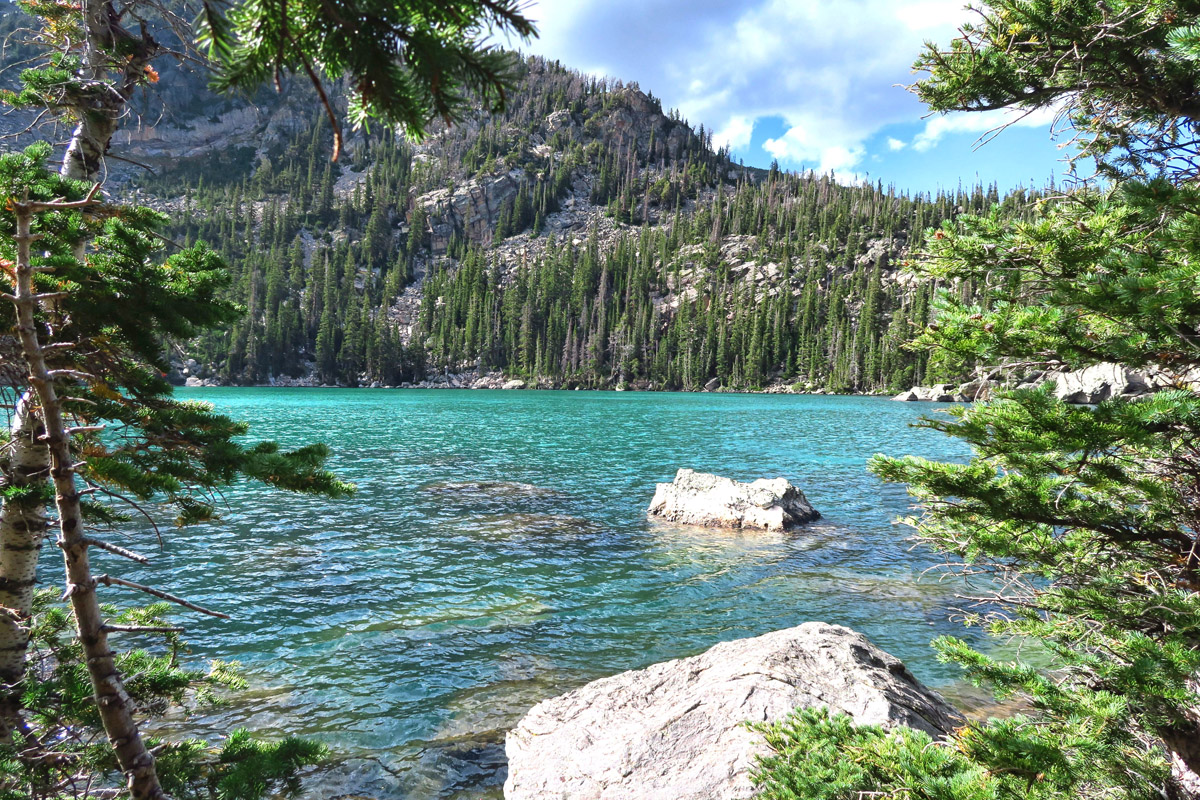 Of the five lakes on this hike, this one is by far my favorite, just because of the color. 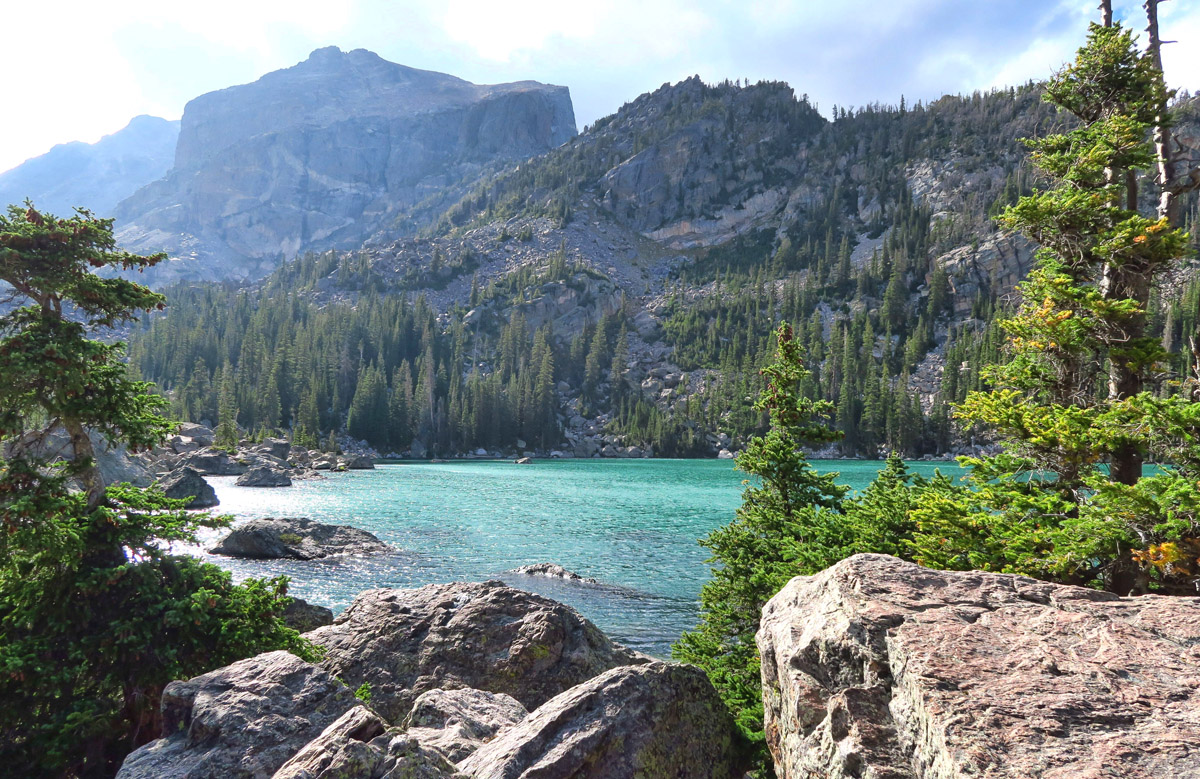 Shooting into the sun makes it tough to tell how brilliant this water was. 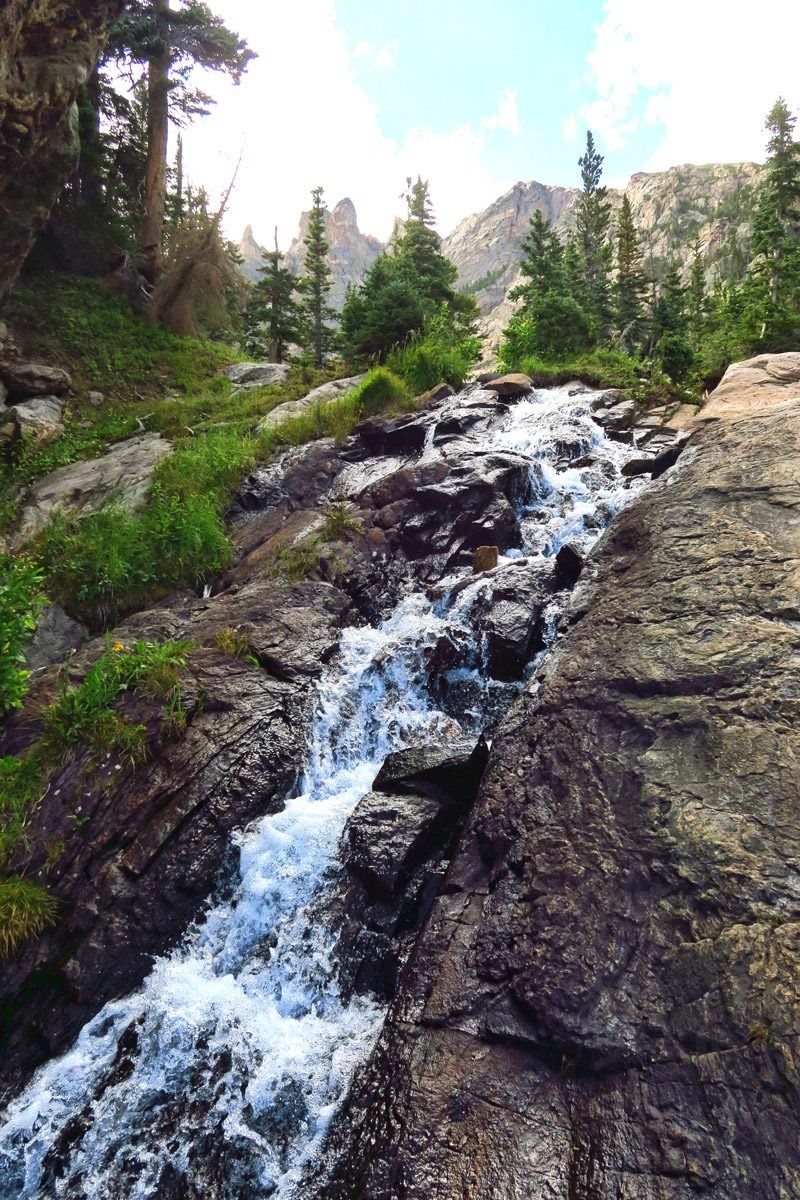 More waterfalls around the loop. 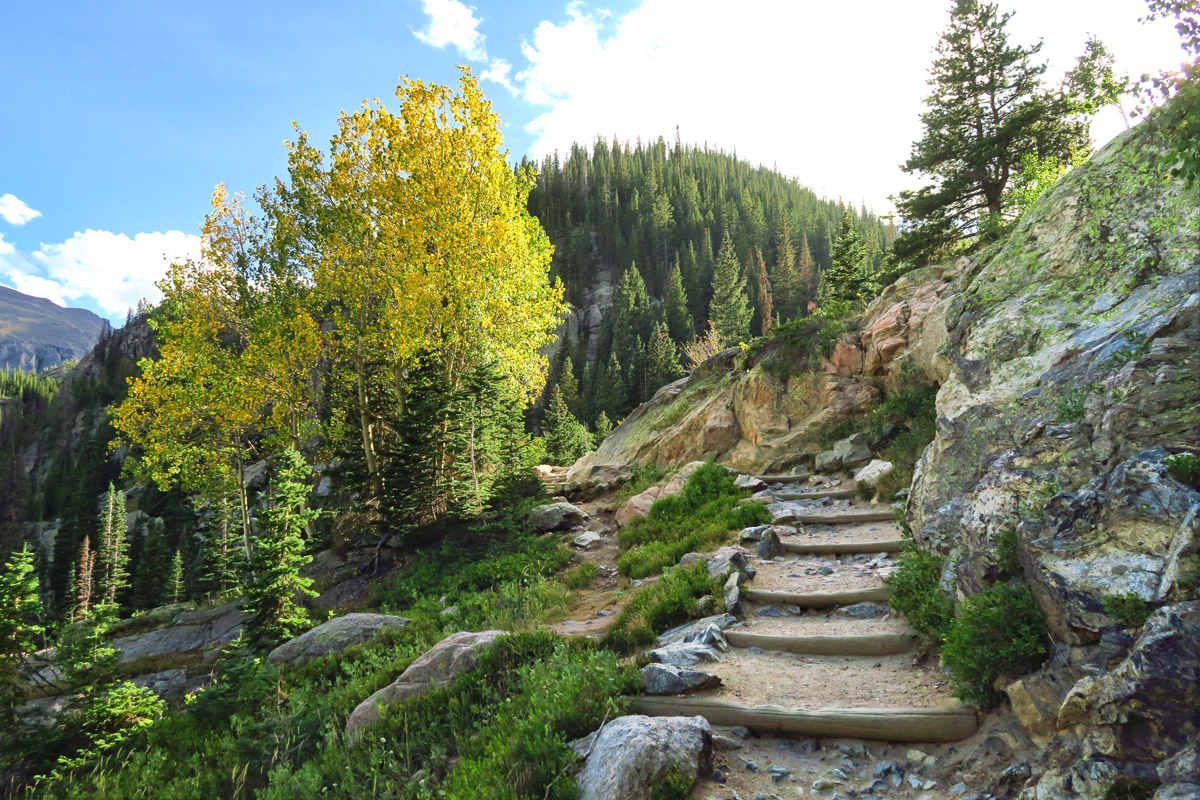 Looking back on beautiful aspen tree as I head back down…

Below is a picture of Long’s Peak. Its 14,259 ft summit looks so easy from here, but then don’t they all? Another adage that became an adage for a reason, “Looks are deceiving.” He was believed to be headed up the Keyhole Route, known as the standard route for climbing the peak. He was the second man to fall to his death in the park this summer, the first from nearby 13’er, Mount Meeker. 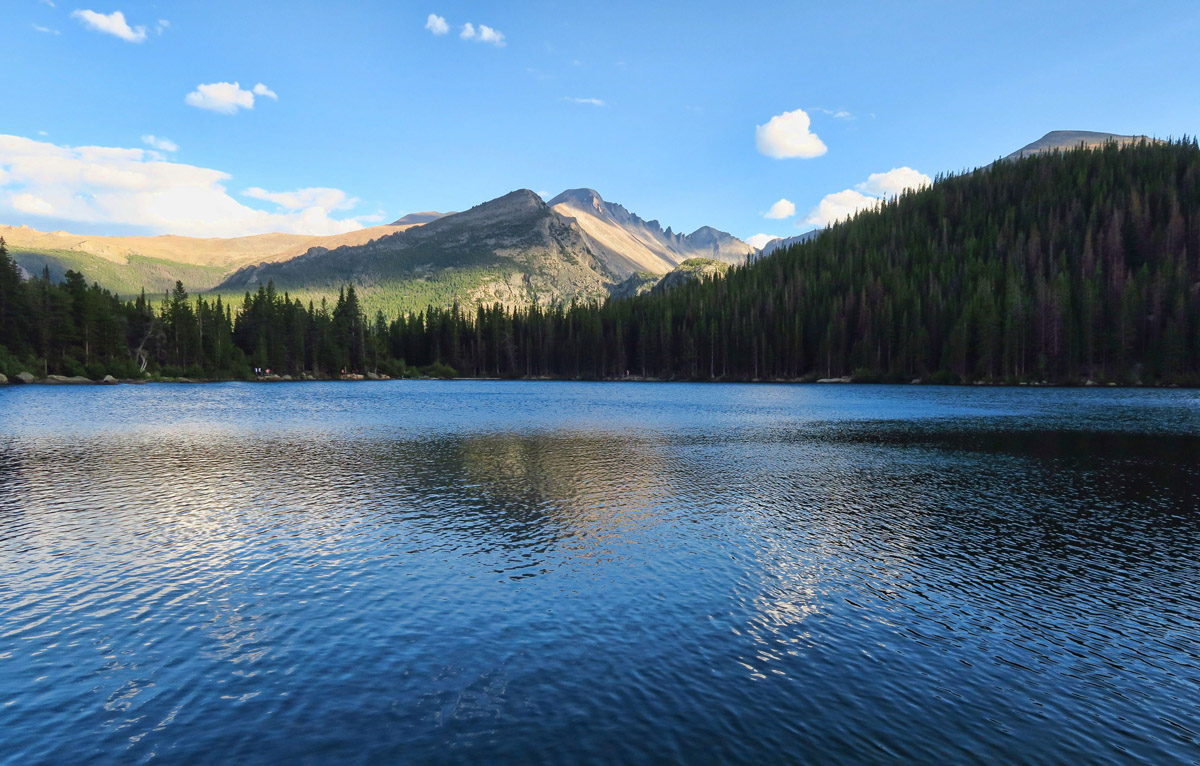 Longs Peak from the edge of Bear Lake.

This incident was disturbing to experience it as it all unfolded. First, there was the news flash on the TV screen overhead in the local restaurant with the tag line “Missing Hiker.” Next came the “Missing” flyers tacked up at all the trail heads with a photo and description of what the man was believed to be wearing. Finally, the eerie sound of the helicopters whop, whop, whopping overhead with the “basket” attached, as the search turned from rescue to recovery.

The words that haunted me were “believed to have started”…”presumed to be”…”unknown what his planned destination or route was.” His family reported him overdue, but no one had a clue where he had gone. They found his rental car at the Longs Peak trailhead, so they started there. Interviewing other hikers, bringing in dog teams, helicopter searches, etc.

I do carry a Garmin InReach device to I can signal for help, but in this man’s case, he fell over 200 ft and died instantly, leaving his poor family to piece together his plan. Although my family always knows where I am parked for the night, I rarely ever “file a flight plan” for a day hike. What a pain to have to compose an email every time I start out for the trail.  And how confusing for my family to have to sort through past emails.

So I have implemented a new process. I bought a small, 8” x 10” white board for two bucks from Walmart, and I now scribble out my intended destination as I am packing out the pack. I’m certainly not scaling any mountains these days, but still end up in some overlooks, canyons, etc. alone, where no one knows my location.

It’s not fool proof, as someone will have to break and enter to find it. But at least if I go missing, there will be a record of where to start the search, ideally.  I’d be okay with being left for coyote food, but the NPS and USFS tends to frown on that sort of thing.  So it’s a start… 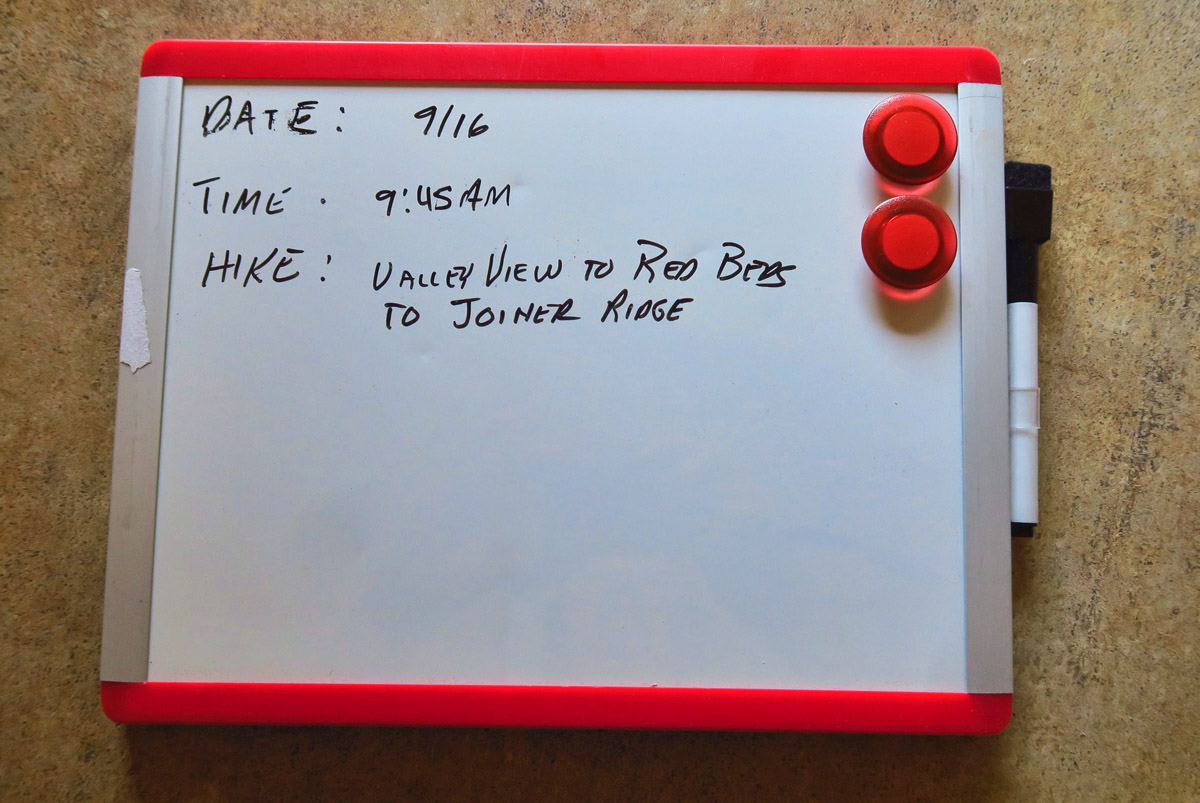 22 thoughts on “On Linking the Lakes and Locating the Lost”