My friend and frequent supporter of this blog recently reminded me of a song from my youth, “Willin'” written by Little Feat’s founder Lowell George, but made even more mainstream by Linda Ronstadt. Since Rhonda’s reference, I can’t get the song out of my head as I reflect on my summer spent in Colorado.

I’ve been fortunate to spend the entire summer chasing 70 degree temps while the rest of the US swelters through one of the hottest summers on record, and my dear family celebrates a cooling trend at 98. But my “summer in Colorado” has not been without its challenges.  After last summer spent gunkholing through Atlantic Canada, arranging ferry schedules and staying in a new spot every night, I was looking for “easy” this summer.  Let this serve as my own personal reminder that “Colorado is NOT easy!” 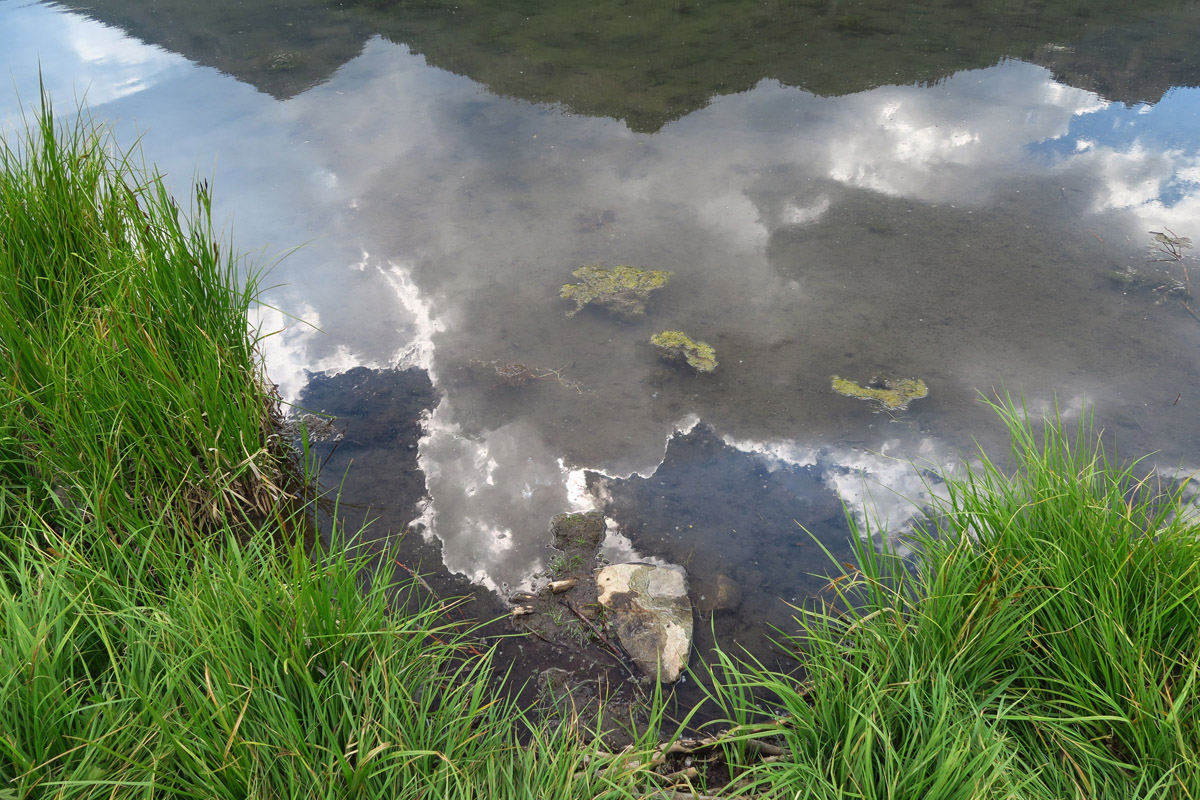 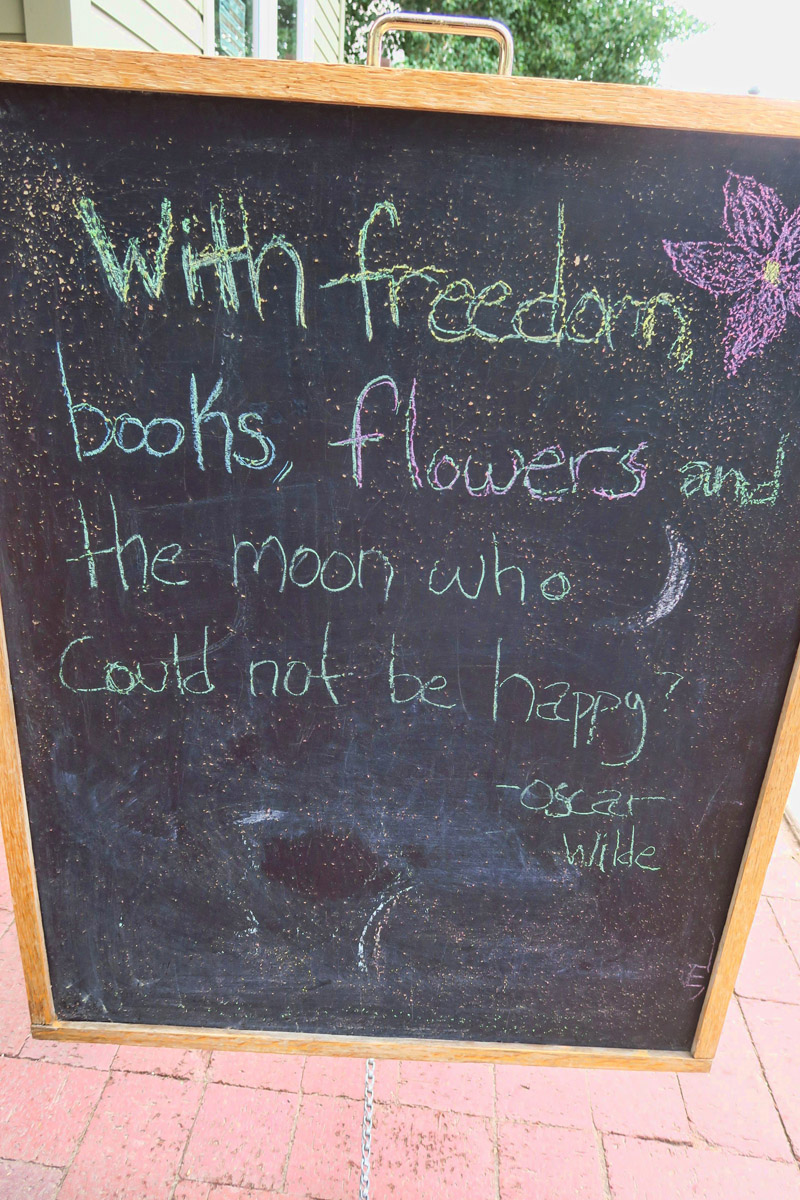 “With freedom, books, flowers, and the moon, who could not be happy?” ~ Oscar Wilde 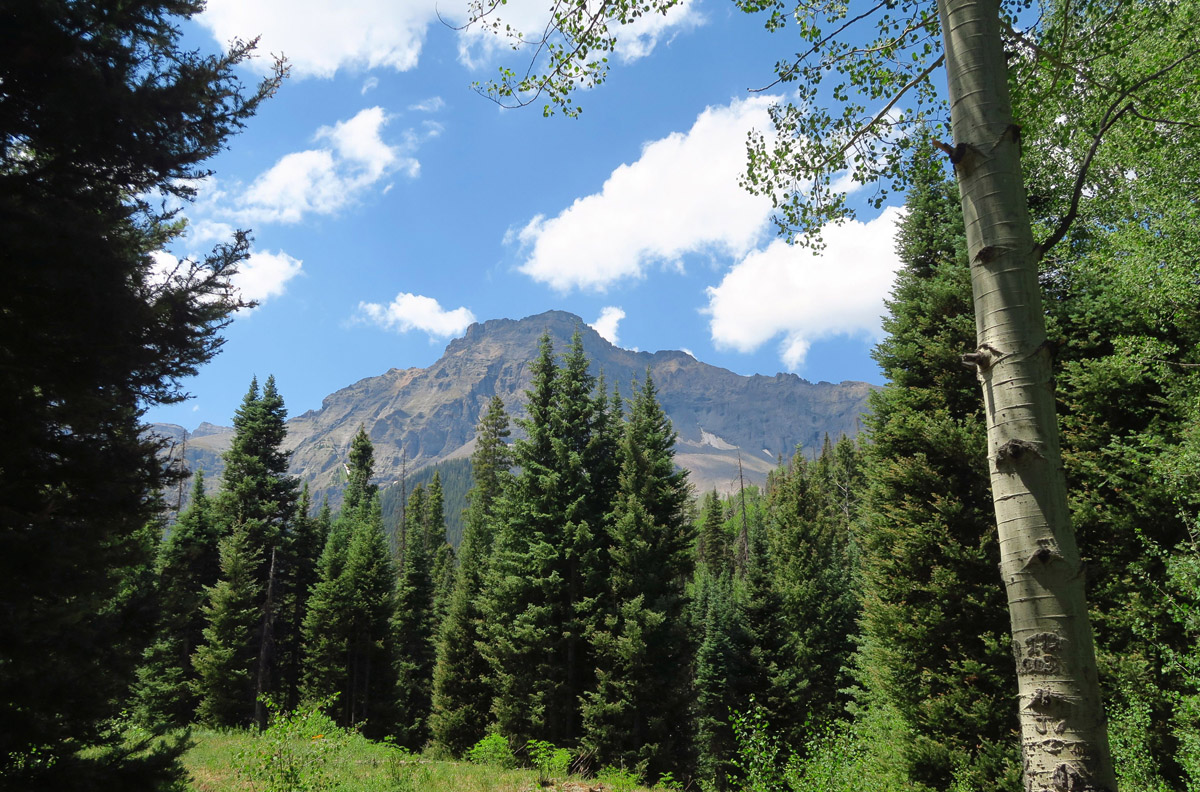 Don’t get me wrong, the visual stimulation and the cool mountain air has made it all worth it. Gorging on the taste of summer in Colorado, not just the stunning scenery and smell of pine tree forests, but throw in all the Palisade peaches you can eat and fresh picked Olathe sweet corn, and it’s a sensory feast.

But it’s often hard earned. As I write an email to friends while perched on the side of a mountain, just a few miles from the South Dakota state line, I avow, “Remind me to never come back here in an 11,000 lb rig pulling a car behind me again!” 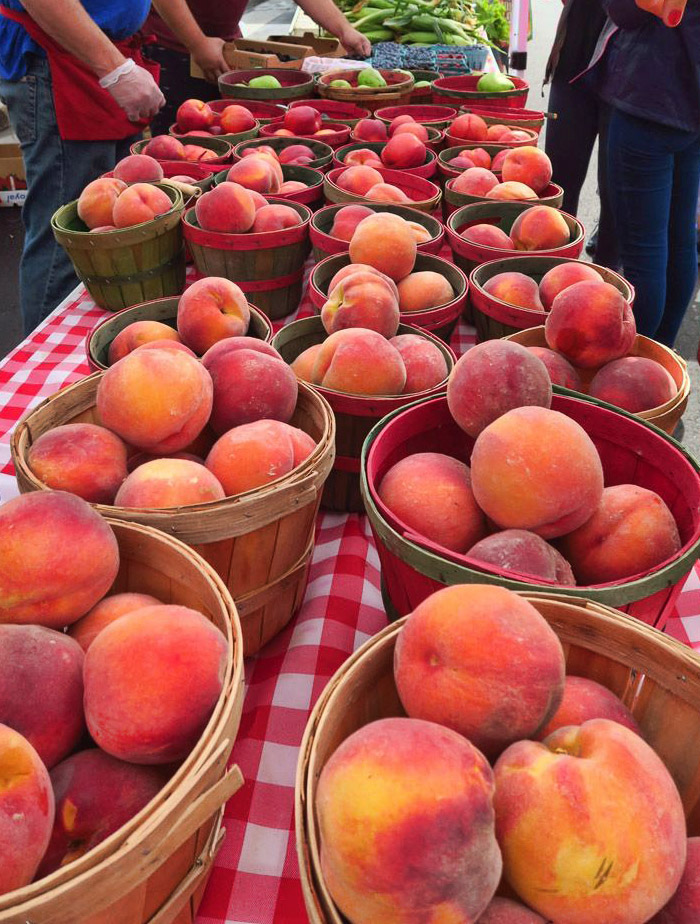 Sorry, Georgia, you may be “The Peach State,” but as a former resident I can attest you don’t hold a candle to the peach from Palisade! 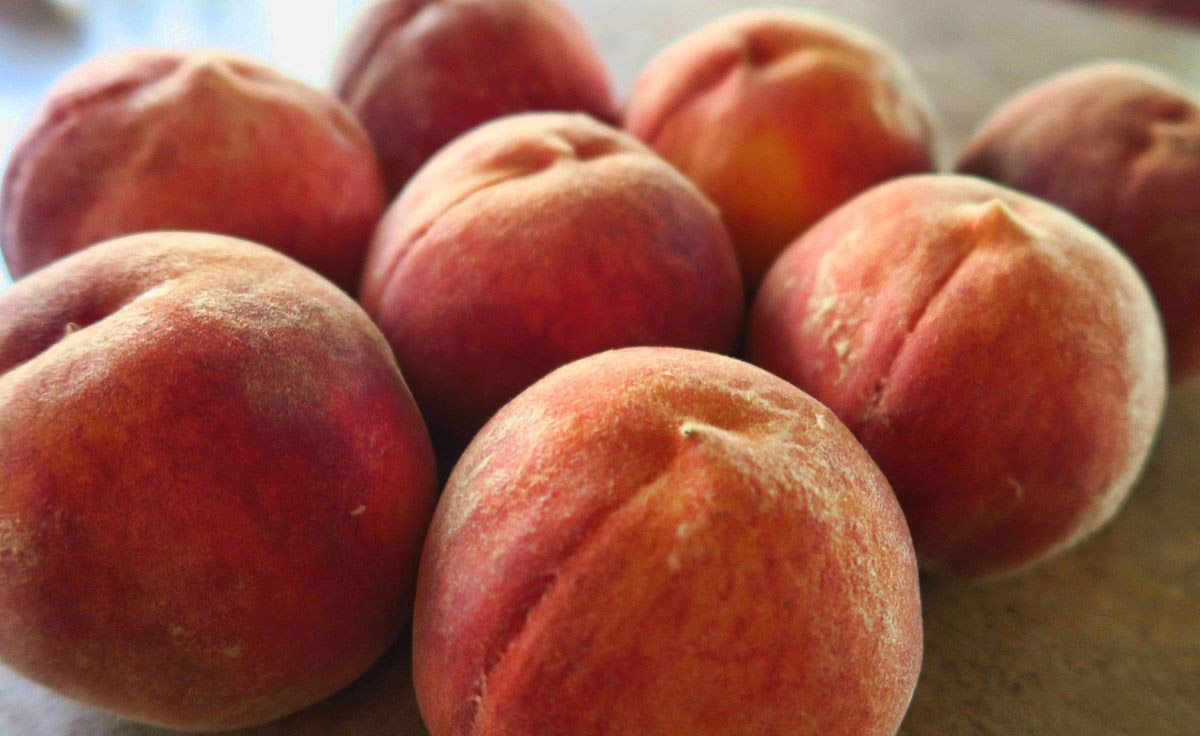 I ate them until I couldn’t eat any more, and then I filled the freezer… 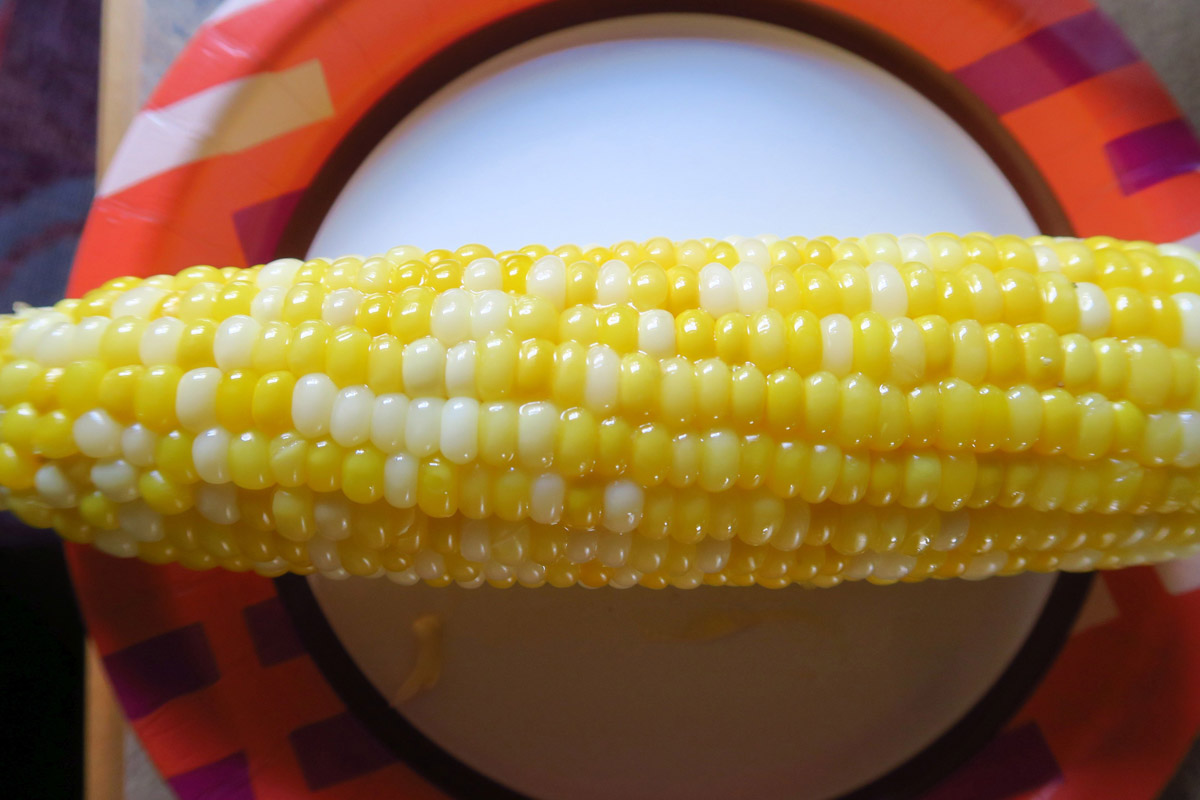 Did you know Olathe sweet corn is most often two-tone, rarely all white, and never all yellow?

Interstate 70 turned what few brunette hairs I had left to white. It’s got to be the planet’s biggest roller coaster. A typical morning’s drive involves starting out around 8,000 ft, I feel the pull of the incline as the tachometer increases. Time to turn off the air conditioner. I scan my gaze back and forth between the tach and the scan gauge, watching the engine temps rise…205, 215, 222…oops, better back off on the climbing speed. 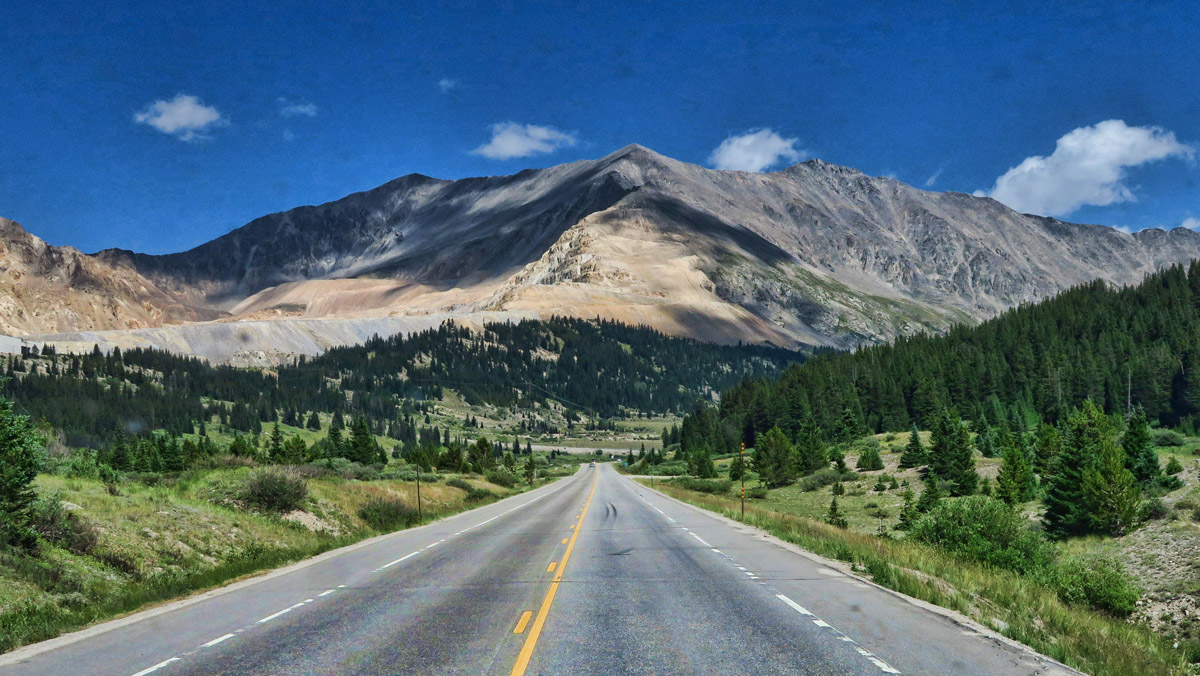 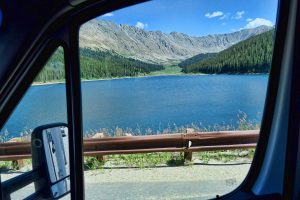 Along the headwaters of the Arkansas River. 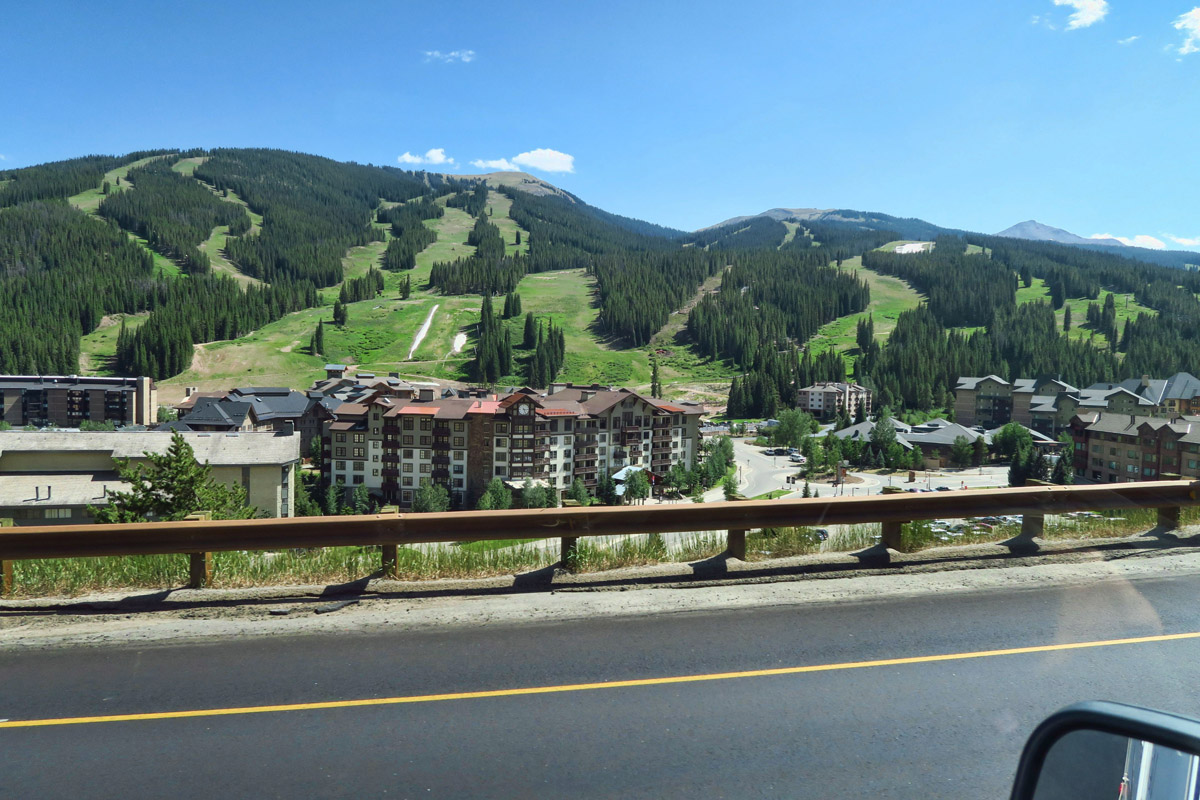 Near Vail Pass, those ski runs look like “bunny hills,” but I know better!

Chain-up pullouts begin to appear, some already occupied with overheated cars, their hoods up. Soon, the far right slow lane is completely clogged with 18-wheelers, their emergency flashers on going at a crawl…too slow for me to follow, too fast for me to pass. The views become majestic, but I cannot look because I’ve got a death grip on the steering wheel, trying to gauge my speed to stay ahead of the slowest 18 wheeler while keeping the temperature gauge in the safe zone. I feel the Winnie strain under the incline, her engine whining as if to say “Enough of this already! I’m pushin’ ten years!”

Finally, that feeling of sweet relief as we crest the pass at over 11,000 feet. I can feel the Winnie sigh as her tachometer drops back down into the comfort zone. Whew! What a relief that’s over!  But not for long. As if teetering at that weightless moment at the crest of a roller coaster when the contents of ones stomach floats to the top, I relax my white knuckles and tense neck and shoulder muscles just long enough to see the 18 wheelers turn off their flashers. The race to the bottom is on…. 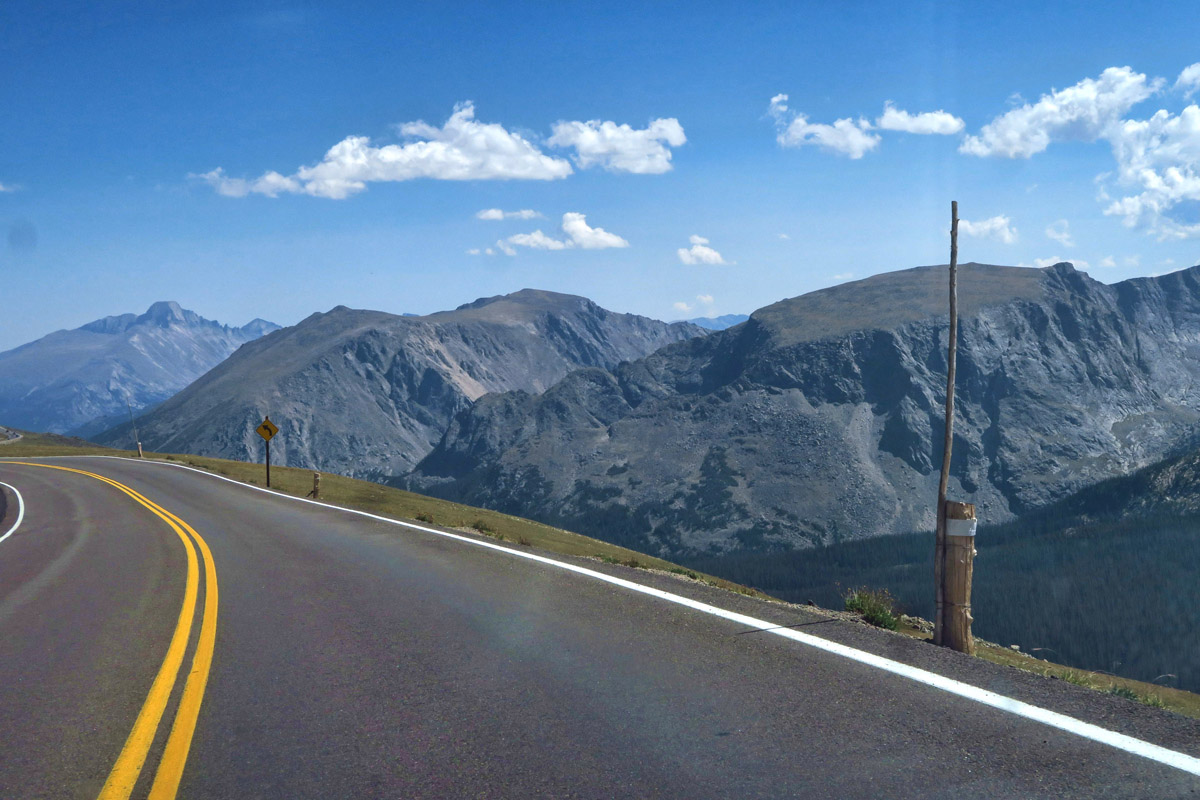 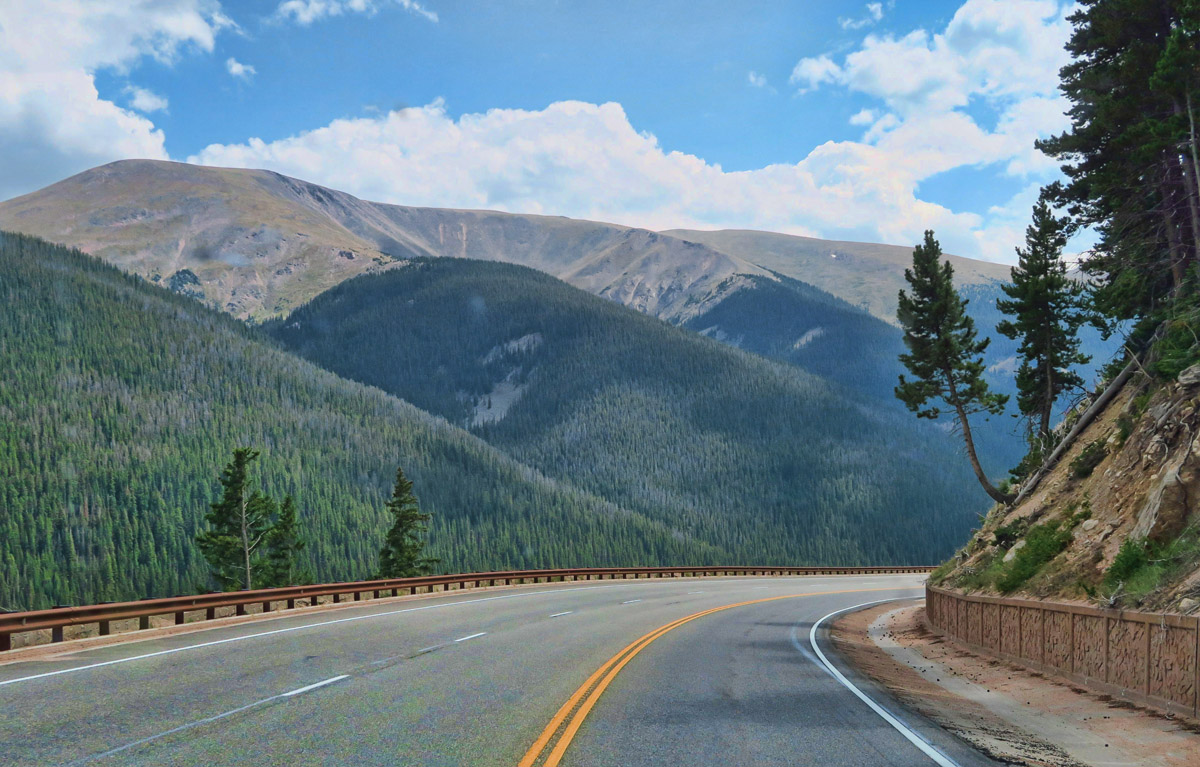 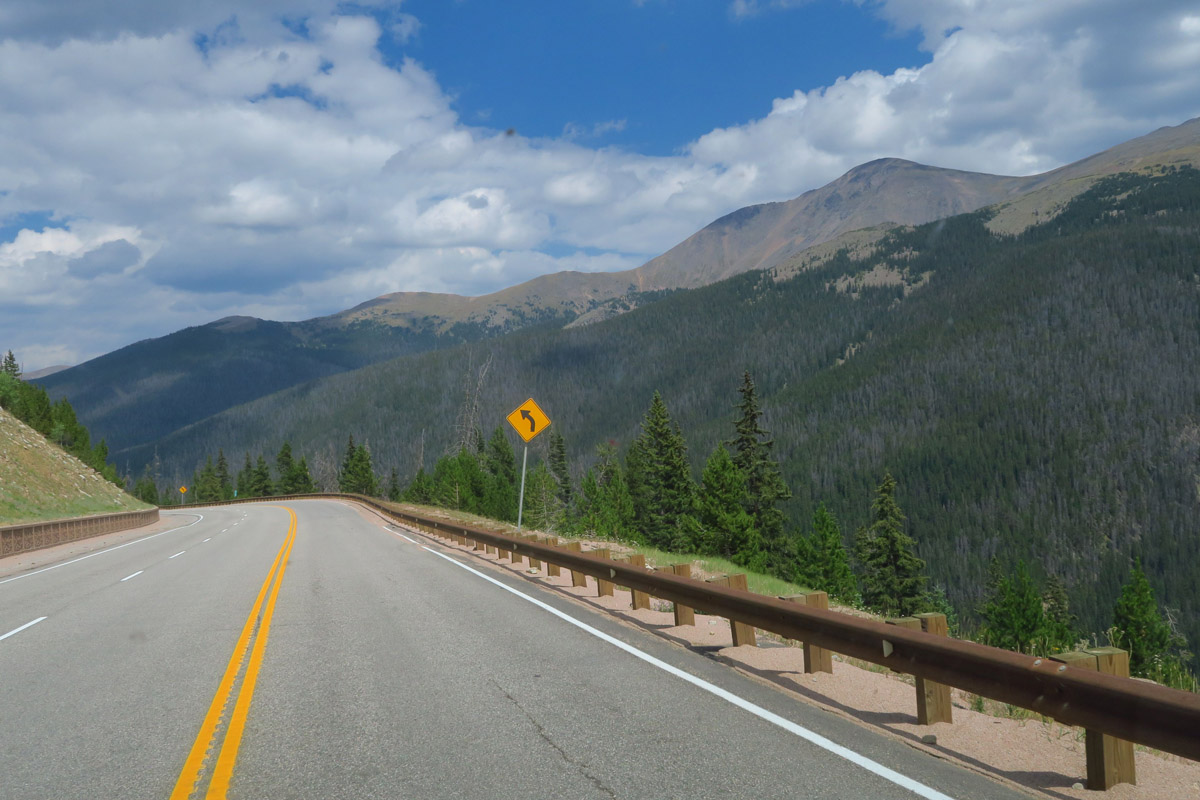 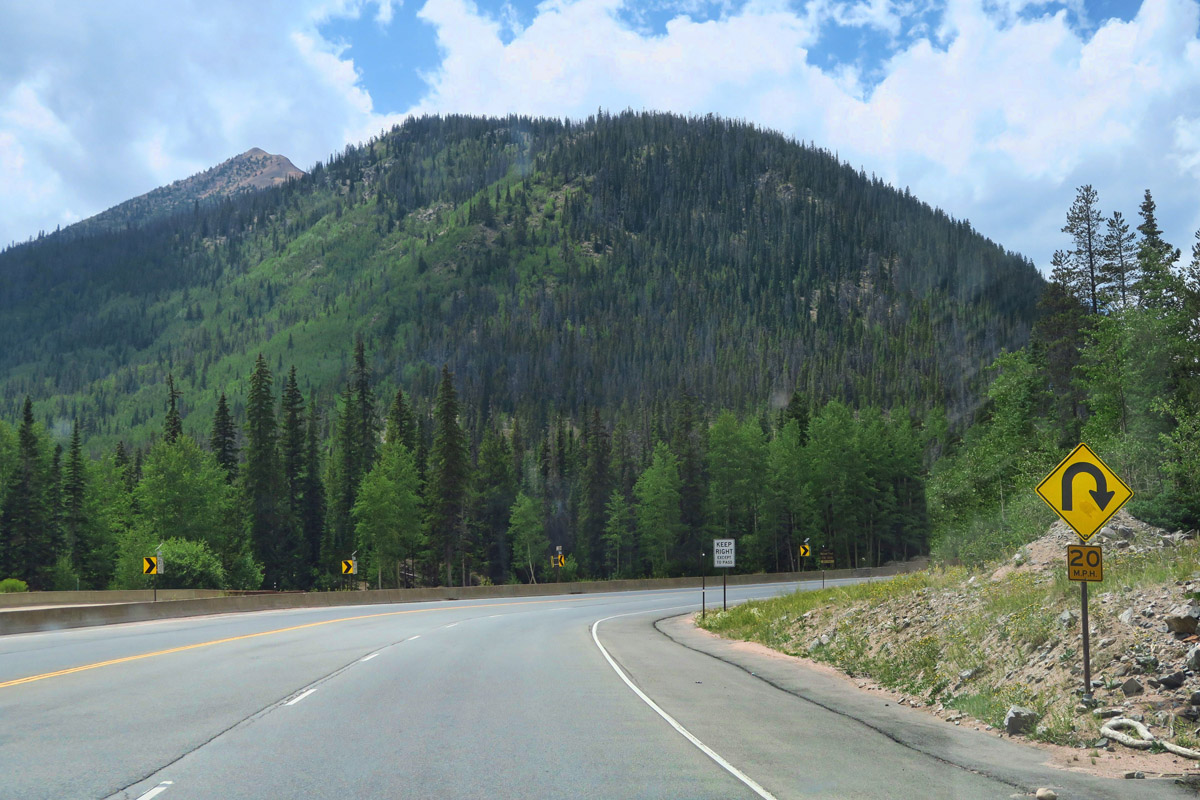 The dreaded diamond-shaped yellow road sign appears ahead, showing the silhouette of a truck careening down the hill. Another giant sign announces “Runaway Ramp Ahead!” Oh, God, please don’t let me ever find myself in need of a runaway ramp! And as if my nerves weren’t frayed enough, I see the sign, “Truckers! Don’t be fooled! Four more miles of steep grade and sharp curves!” The 18 wheelers close the gap and bear down. Gear down and try to find that fine line between boiling the brakes, versus burning up the transmission now revved up to 3,500 rpm in third gear trying to hold back the load of the Winnie and the Tracker, and still I’m going way too fast.  Time to start stabbing the brakes. 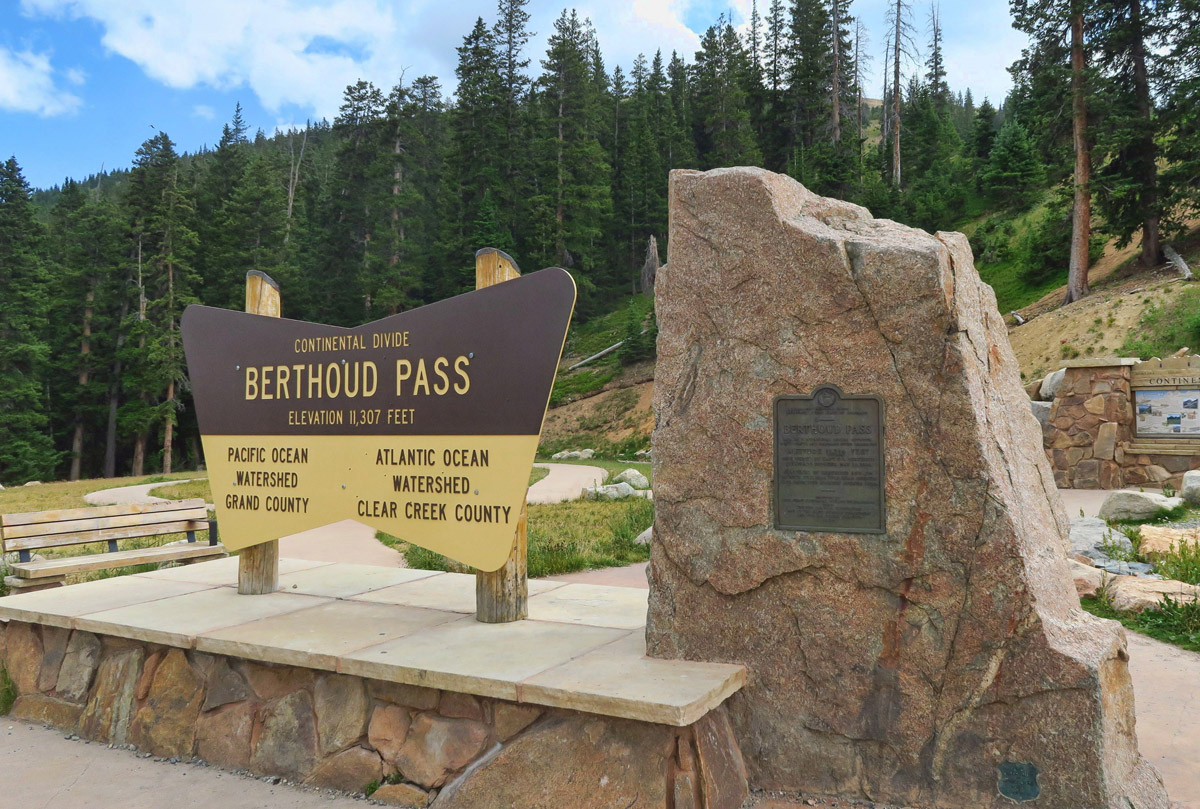 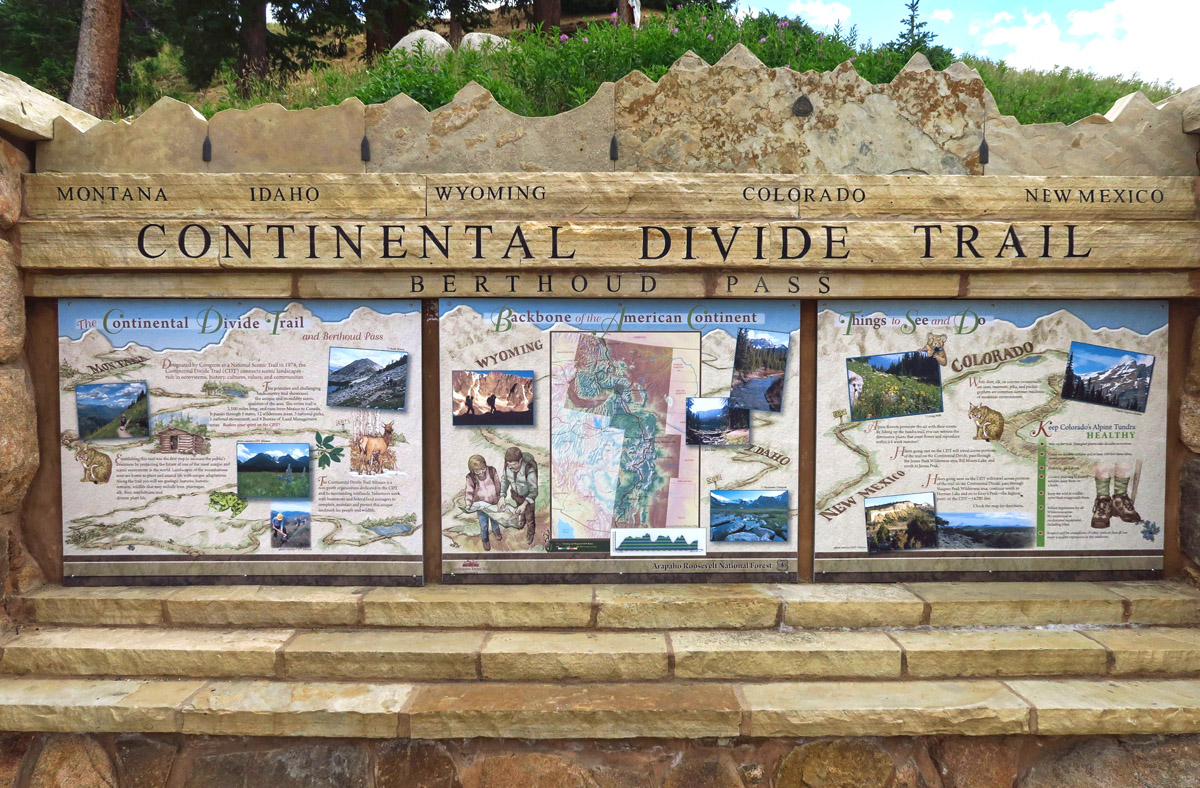 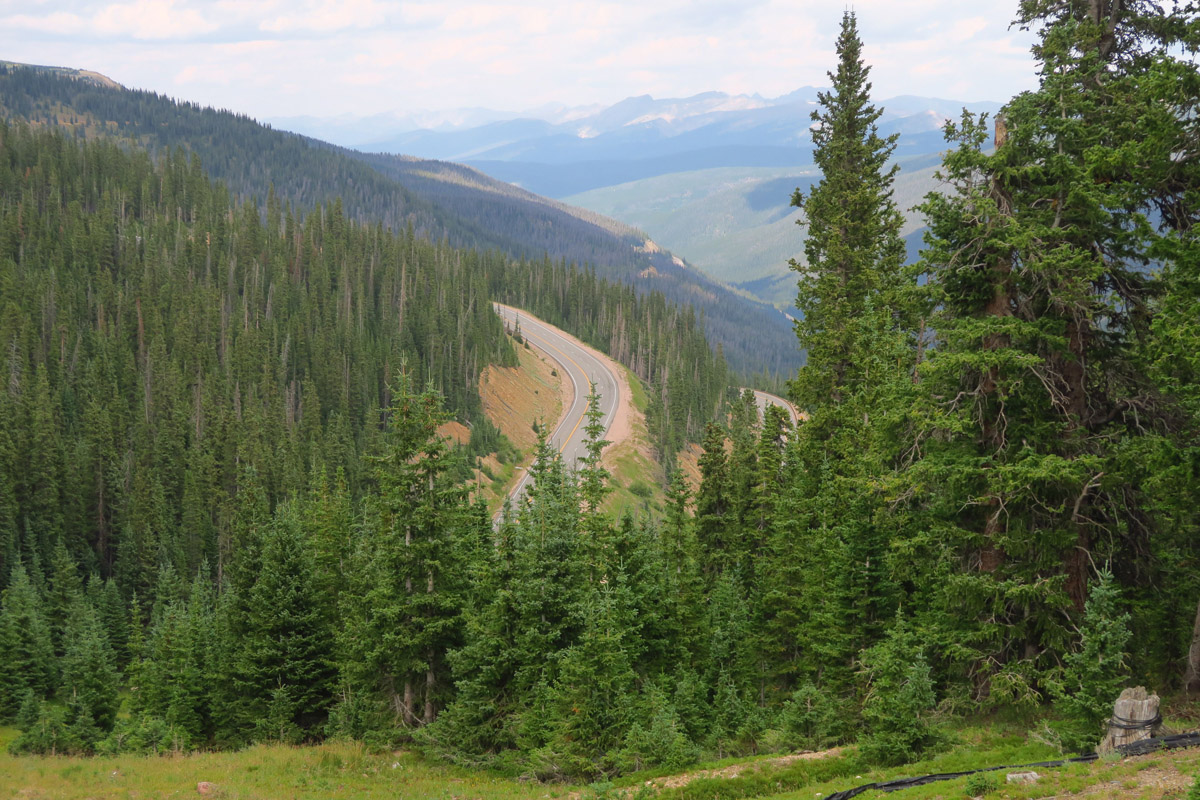 On some of these mountain highways, you can’t gear down enough. Take Hwy 40 for example, not only is there a 6% grade, but it’s woven with 10mph hairpin curves. Roll down the window and be on alert for the smell of hot brakes. There’s a parade behind me in my rear view mirror, surely trying to mount my bicycle on the back of the Tracker as their hood ornament. Sorry, guys. It’s just your unlucky day to get behind my rolling home. 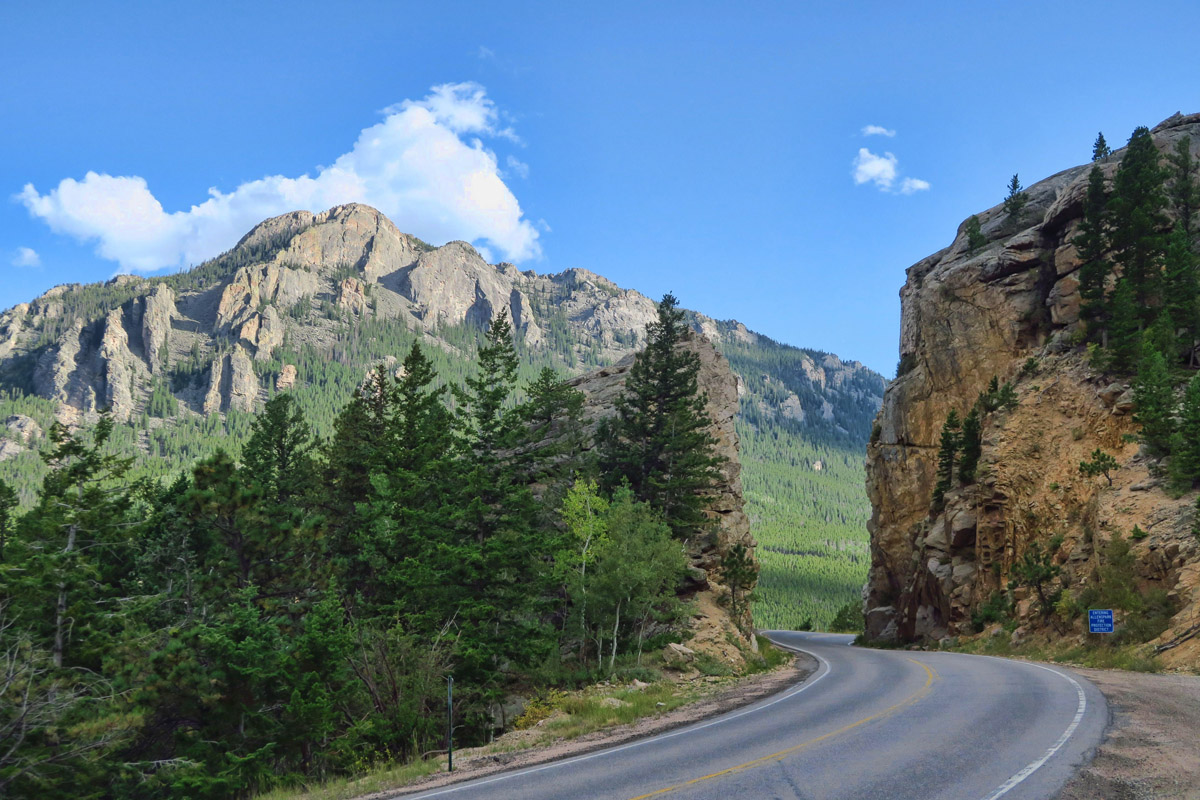 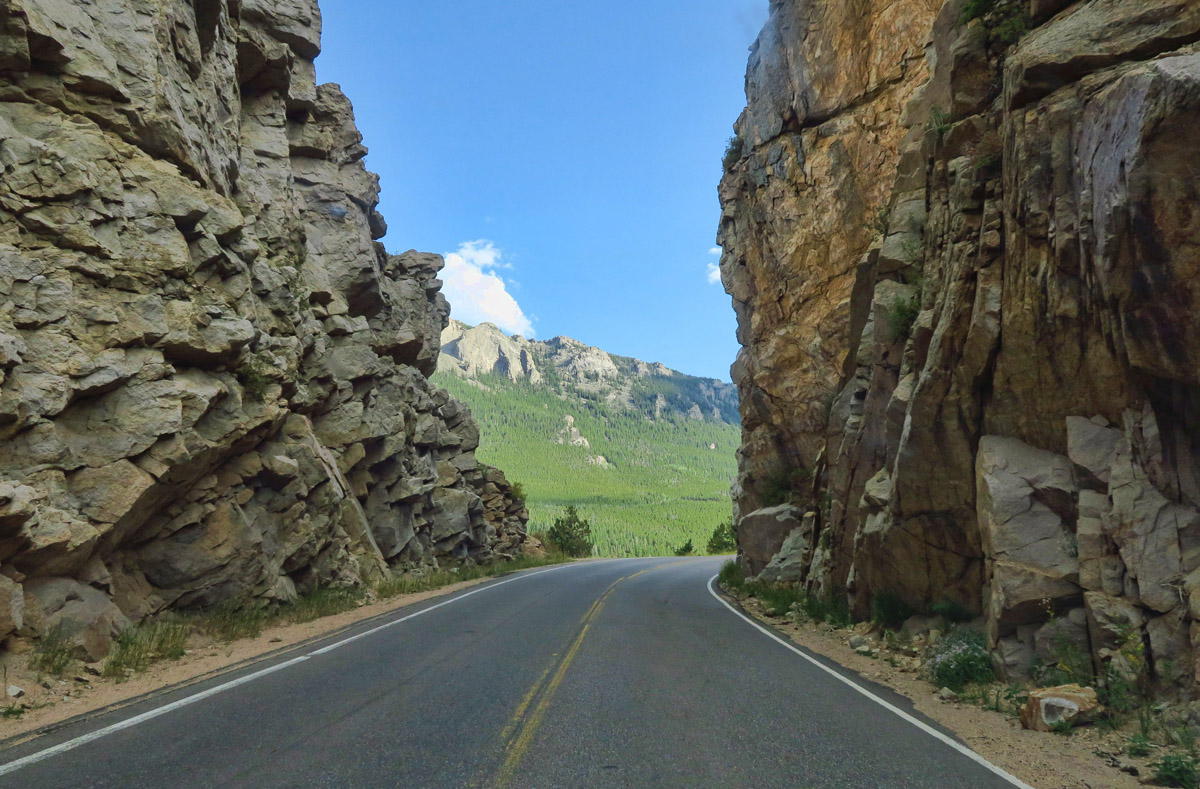 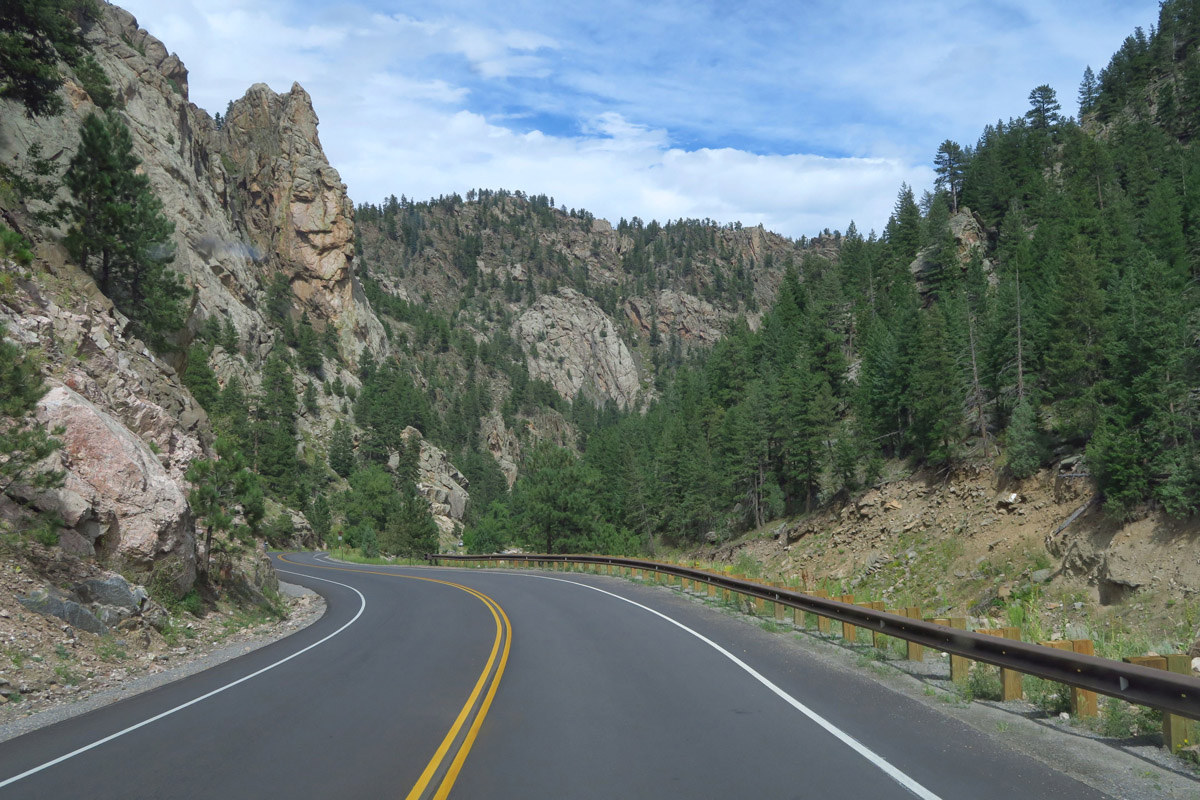 Imagine, if you will, the four days of dread hanging over my head while in Steamboat Springs, knowing I have to go back up over the steepest yet, Rabbit Ears Pass…seven miles at 7% grade. It was a white knuckle drive coming down into Steamboat. One of those sick and sinking feelings with every passing mile that “I’ve gotten myself down here, now I am going to have to get myself back up and out!”

Given that I am headed for a remote area, the Winnie is fully loaded. Full tank of water, full tank of diesel, pulling the Tracker with a full tank of gas. So as I begin the climb, I have one eye glued to the temperature gauge. When it hits 236 degrees, I panic.  Way too hot!  So I pull off to wait for the temp to drop. But I don’t wait long enough. When I pull back out into the climbing lane, the Winnie goes into “limp mode.” I can’t get above 10mph. In the climbing lane. On a 7% grade.  Sheer terror. Thank God there is another pull off not too far up the road. This time, I shut the engine off completely and sit for over an hour until it cools back down. I spend two nights boondocked at the top of Rabbit Ears Pass because I am too stressed to start out again. I know, I know….no one has to tell me I stress too much! 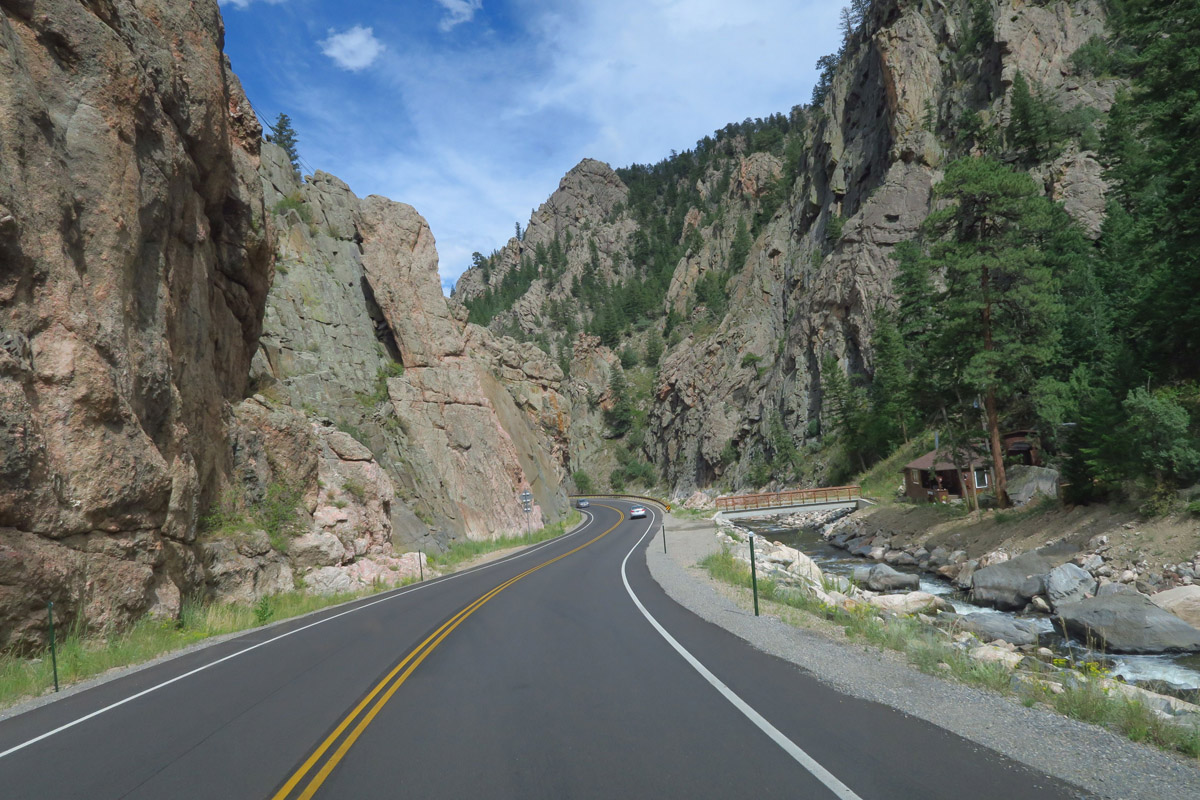 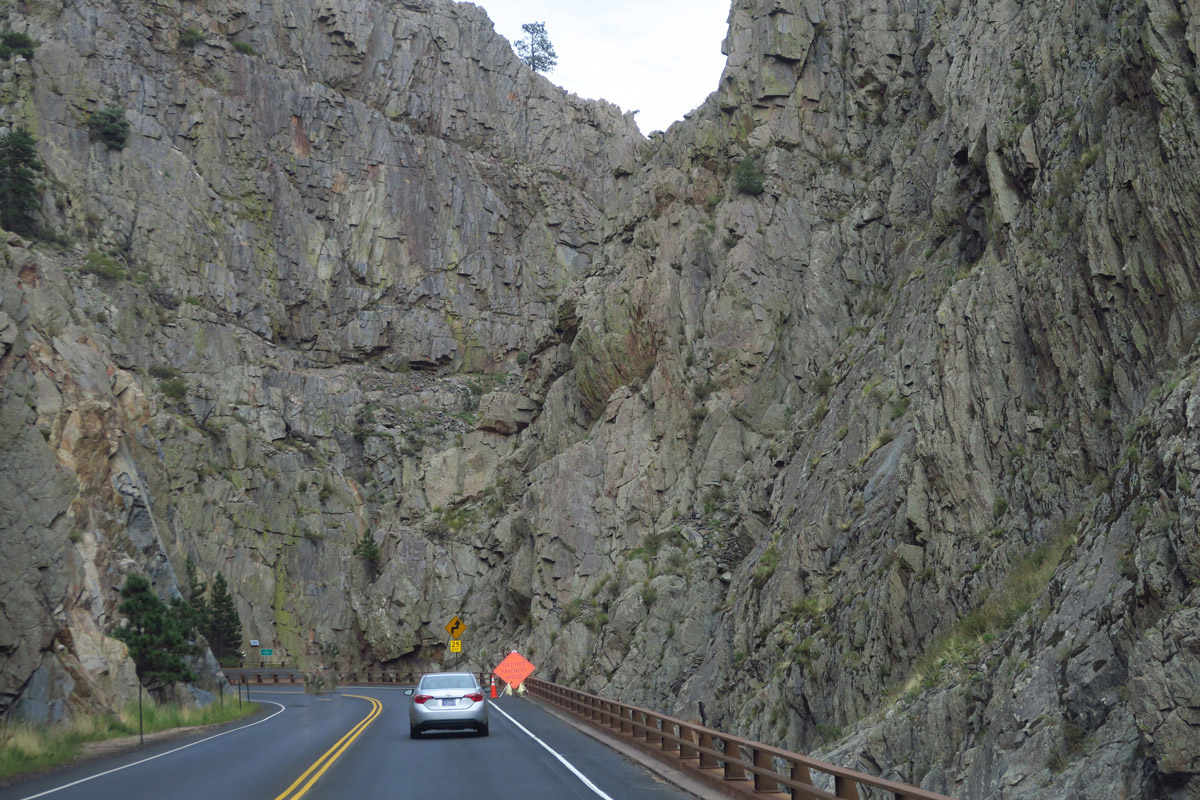 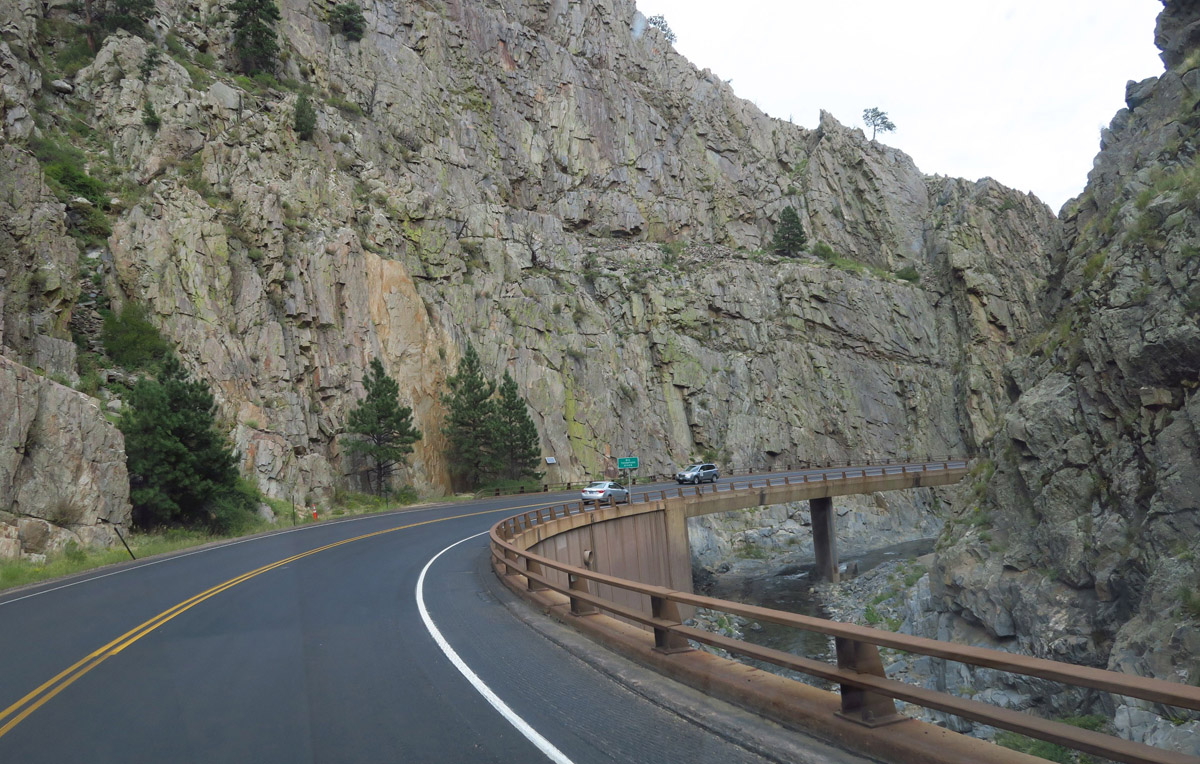 Here is a list of the passes I remember crossing this summer, some of them twice:

I’ve never been a smoker, but I could become a chain smoker after a ride on Interstate 70. Or Hwy 40. Or any number of Colorado mountain routes, for that matter. My “Mountain Directory West” cover is curled, ripped, and edges worn. I’ve become an active member of the Facebook “RV Roads and Routes.”

And that’s just the highway part. With escalating temperatures throughout the nation, there’s no place to go but higher elevation. I talk to other RVers who’ve come from Nevada, Utah, and Wyoming, all seeking cooler mountain air. Or escape from the wildfires. I lost count of how many times I got the last spot in a forest service campground. For all the forest service roads in Colorado, I don’t find much boondocking, particularly in the northern part of the state. What little there is seems to be inhabited by more permanent residents. Or there is not a shred of AT&T signal. 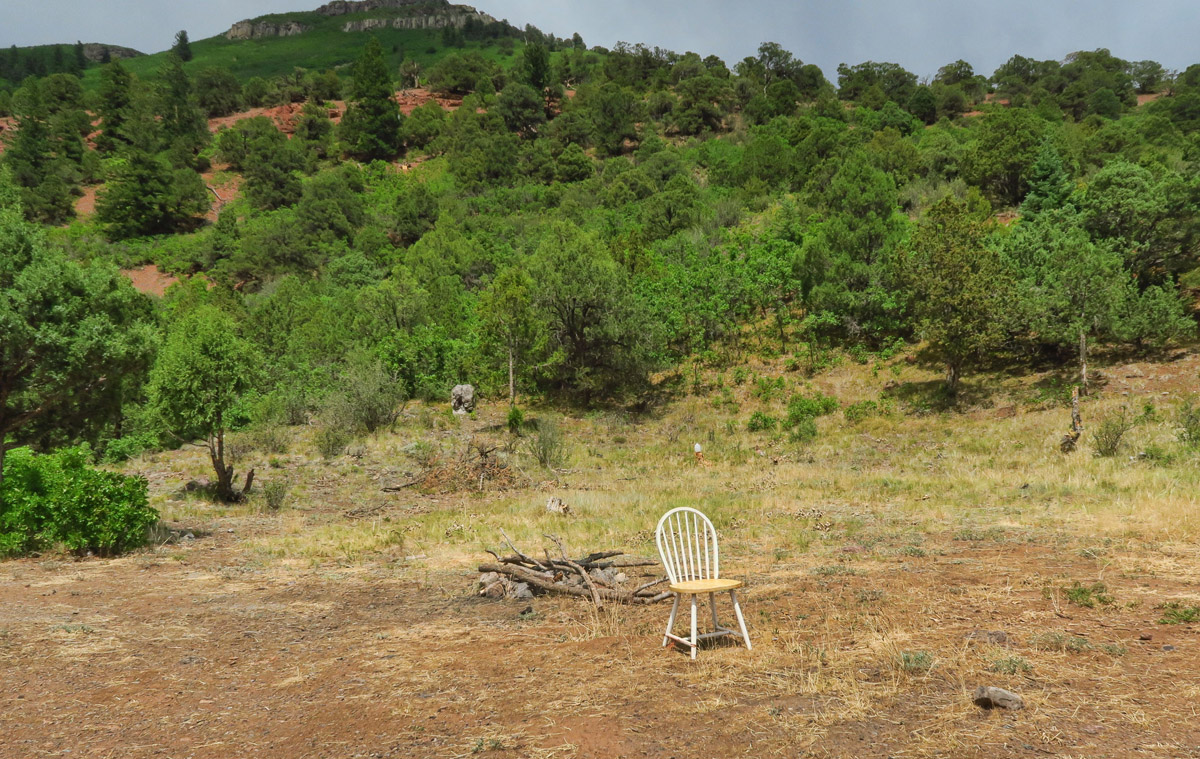 This seat is taken… 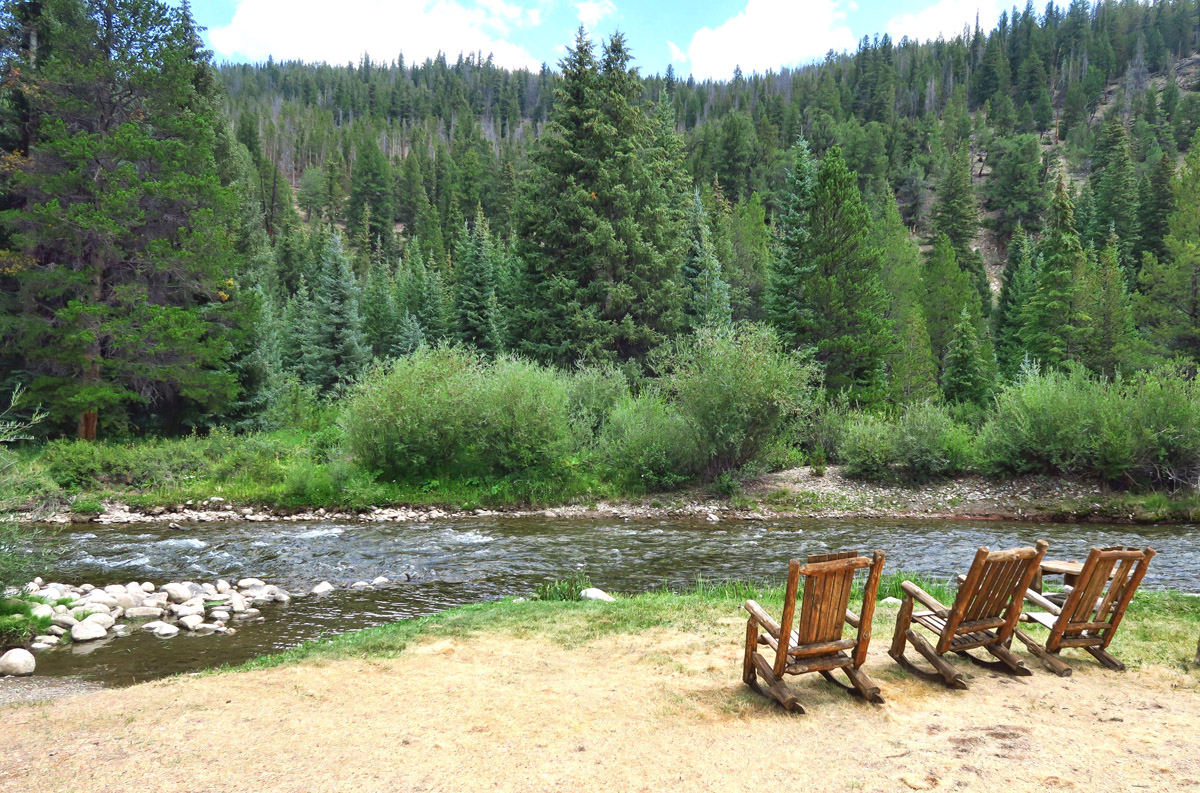 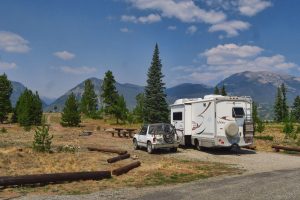 And then there’s the smoke… 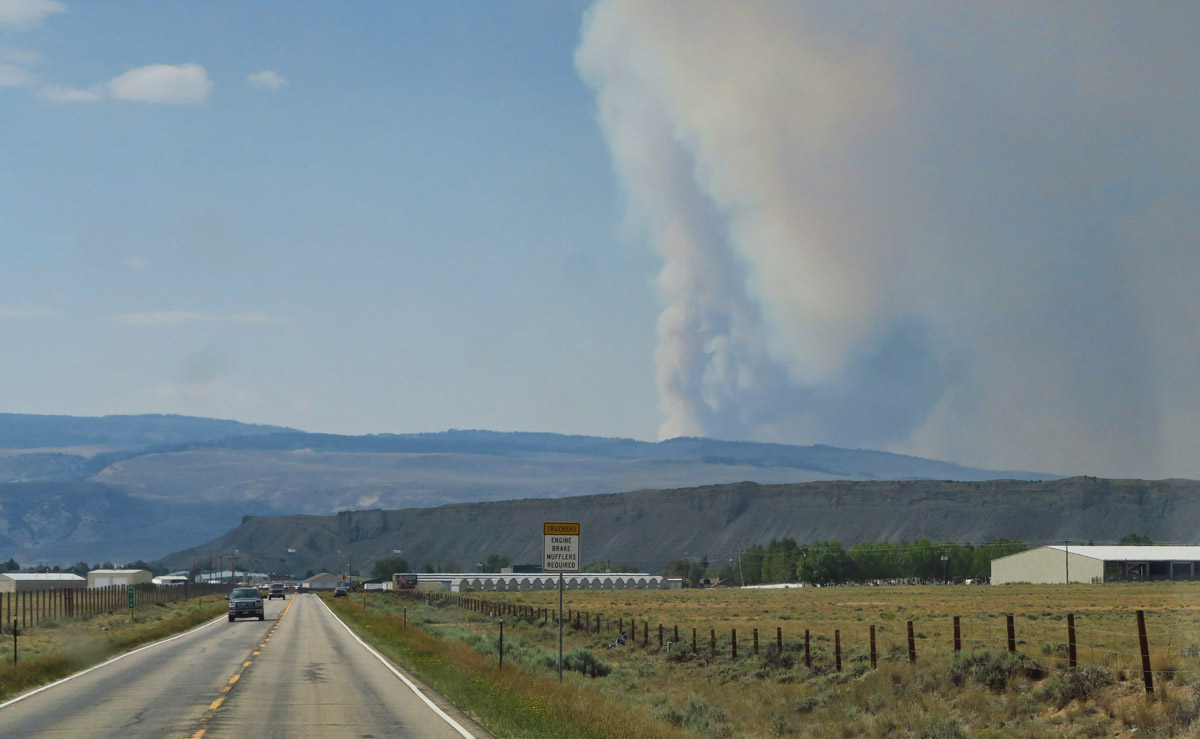 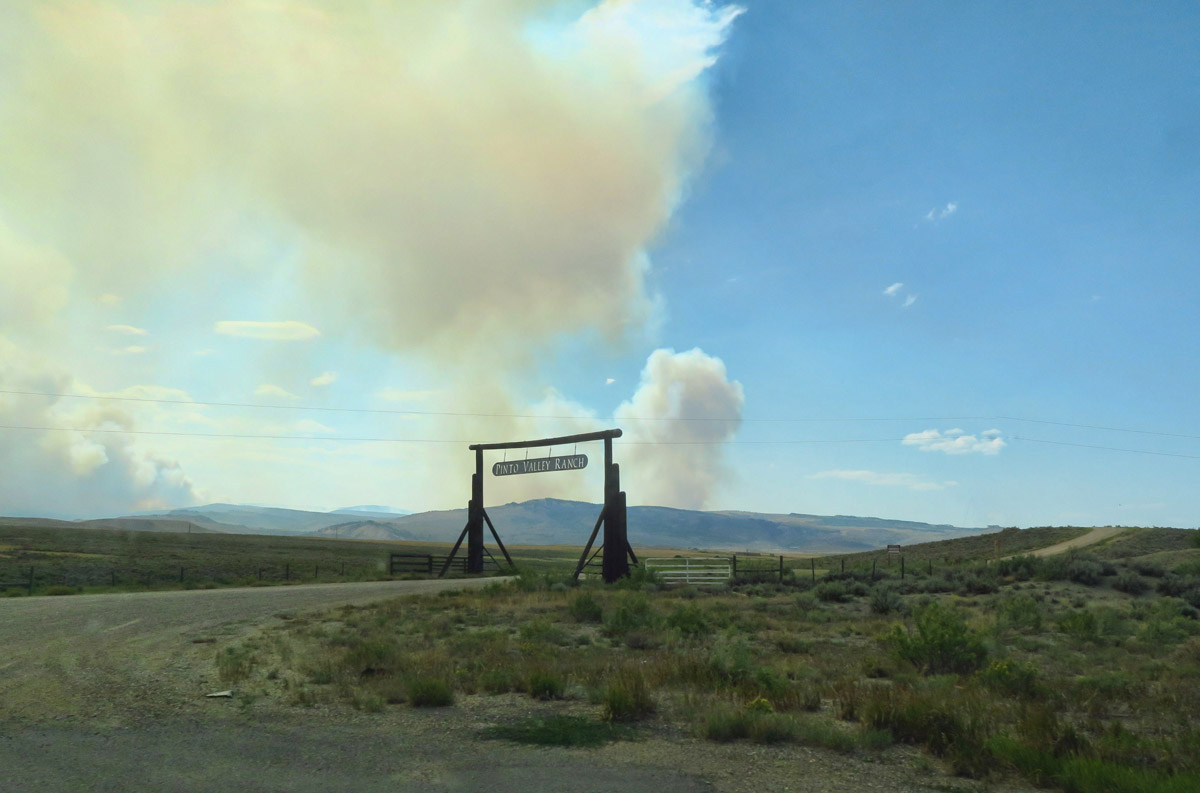 As I prepare to cross the state line into South Dakota, my 47th state, I see the highway lines on the map. Straight, flat, and boring. That’s okay. I’ll take it….at least until my nerves settle back down. 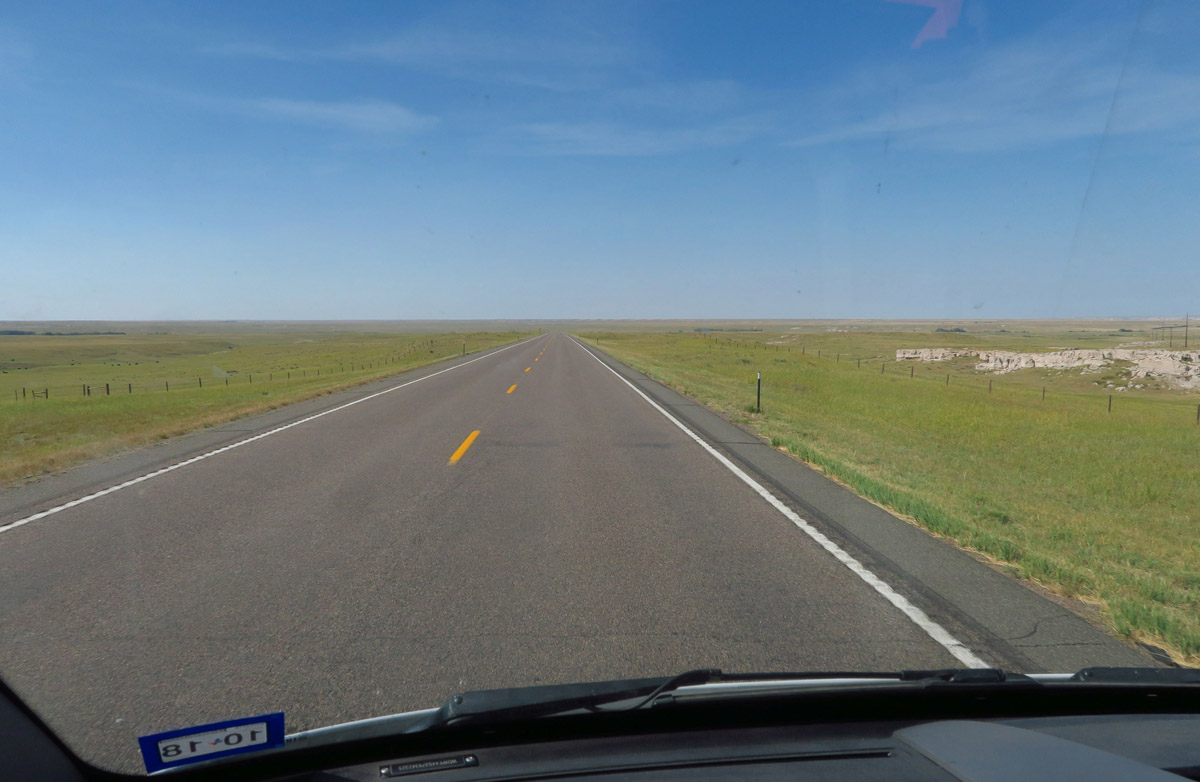 I been warped by the rain
Driven by the snow
I’m drunk and dirty, don’t you know
And I’m still… willin’

And I was out on the road late at night
I seen my pretty Alice in every headlight
Alice, Dallas Alice

I’ve been from Tucson to Tucumcari
Tehachapi to Tonapah
Driven every kind of rig that’s ever been made
Driven the back roads
So I wouldn’t get weighed
And if you give me weed, whites, and wine
And you show me a sign
I’ll be willin’… to be movin’

Well, I’ve been kicked by the wind
Robbed by the sleet
Had my head stoved in
But I’m still on my feet
And I’m still… willin’

And I been from Tuscon to Tucumcari
Tehachapi to Tonapah
Driven every kind of rig that’s ever been made
Driven the back roads
So I wouldn’t get weighed
And if you give me weed, whites, and wine
And you show me a sign
I’ll be willin’… to be movin’