Visiting Mount Rushmore has never made an appearance on my bucket list. After living in Atlanta for eight years near Stone Mountain, seeing the sculpture designed and initiated by the same artist carved into the granite mountain, my thoughts were “Impressive feat, but I don’t need to make a special trip.” However, with two national parks within a 75 mile radius, it got bumped up the list.

I must confess as blasé as I was about visiting, I was awe struck before I even reached the parking lot. There was something about seeing the massive carving appear as I crested the hill out of Keystone that left me with chill bumps. It’s just so….well….omnipresent!  You can see it from the road, you can see it through the tunnels, you can see it from the hiking trails. Their stone-cold gazes (pun intended) cast out over the land. 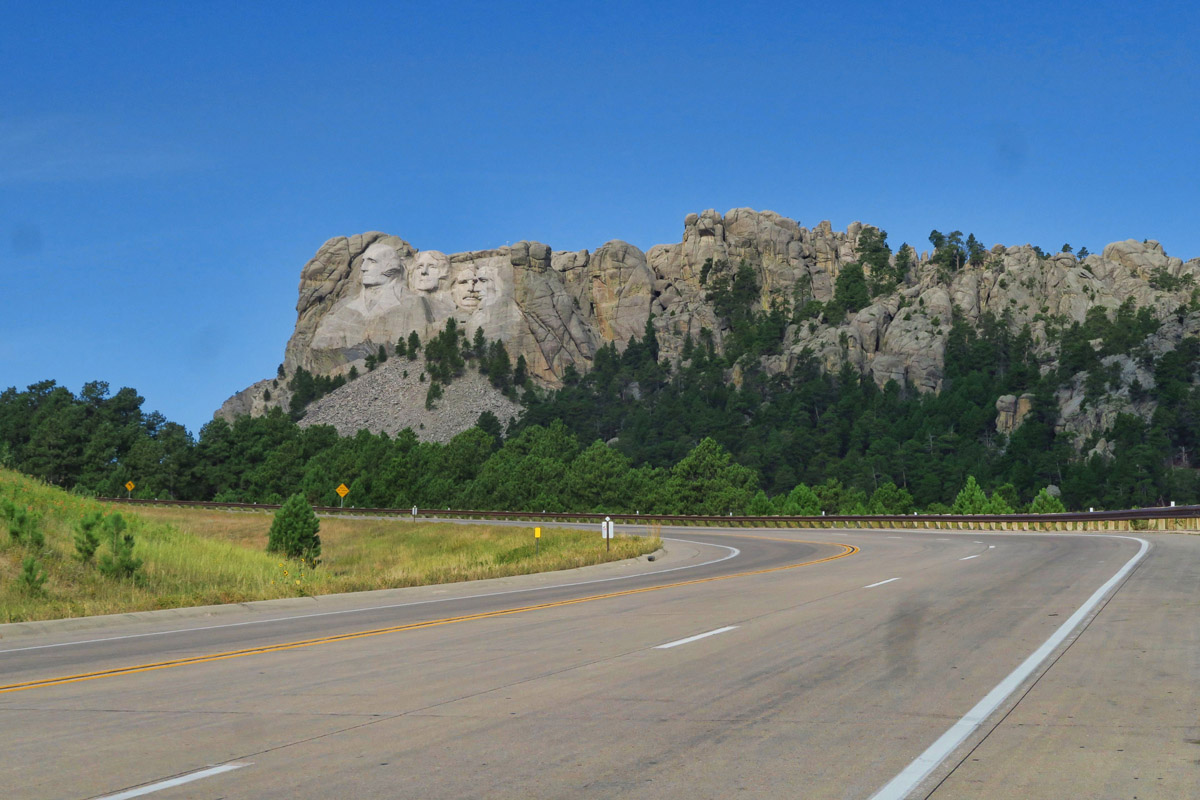 The monument comes into view on approach from the town of Keystone. 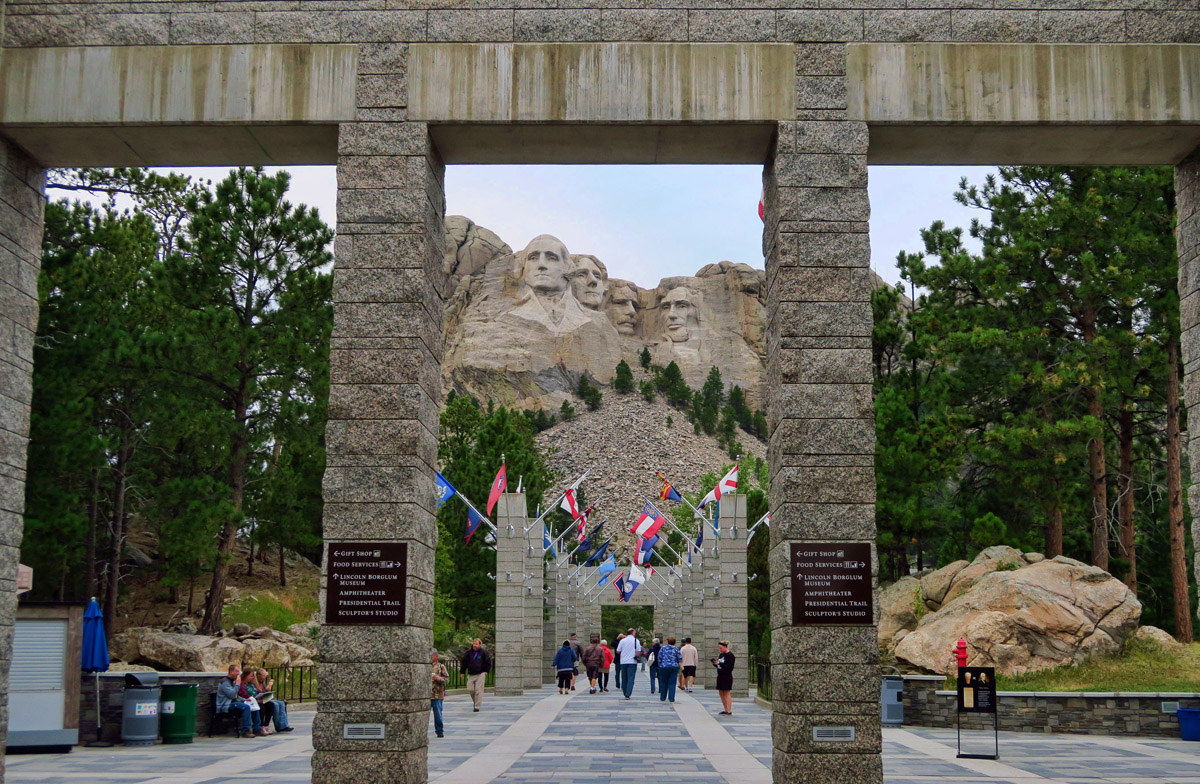 The entire monument complex is quite impressive. 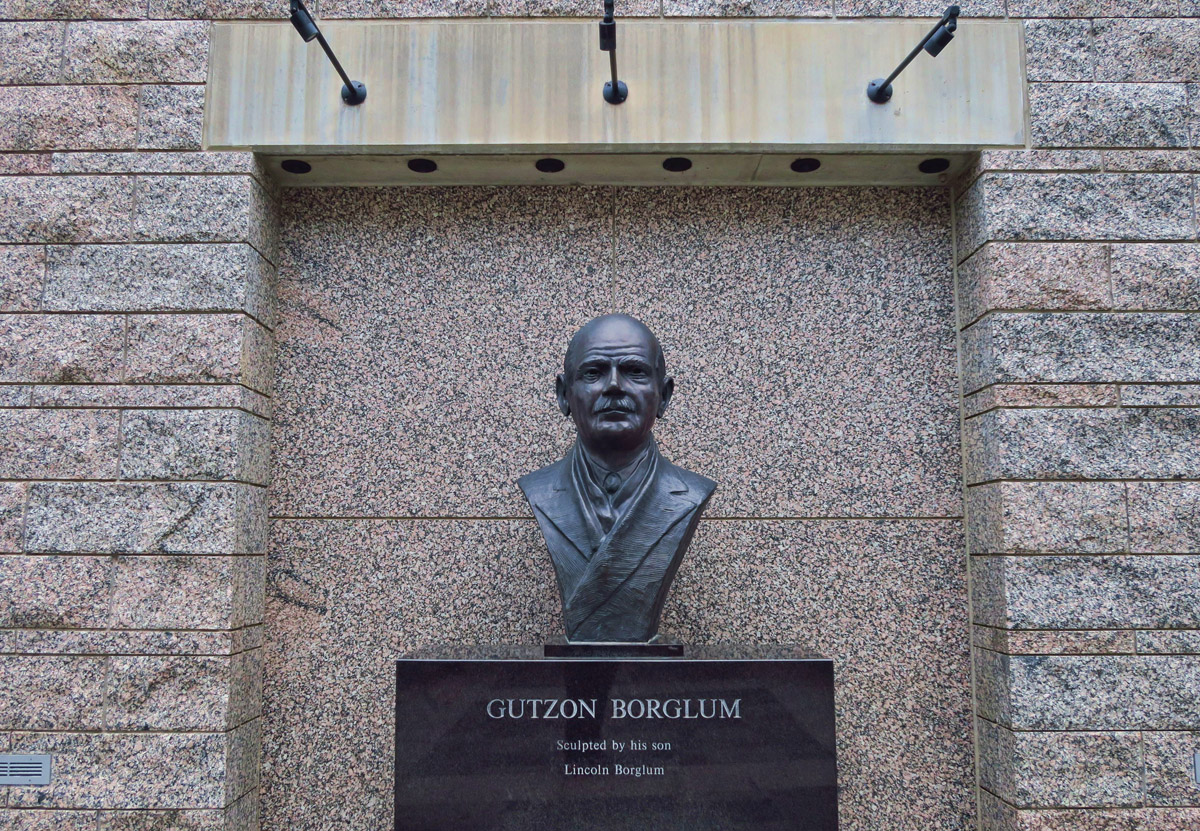 Bust of the sculptor with a storied past. 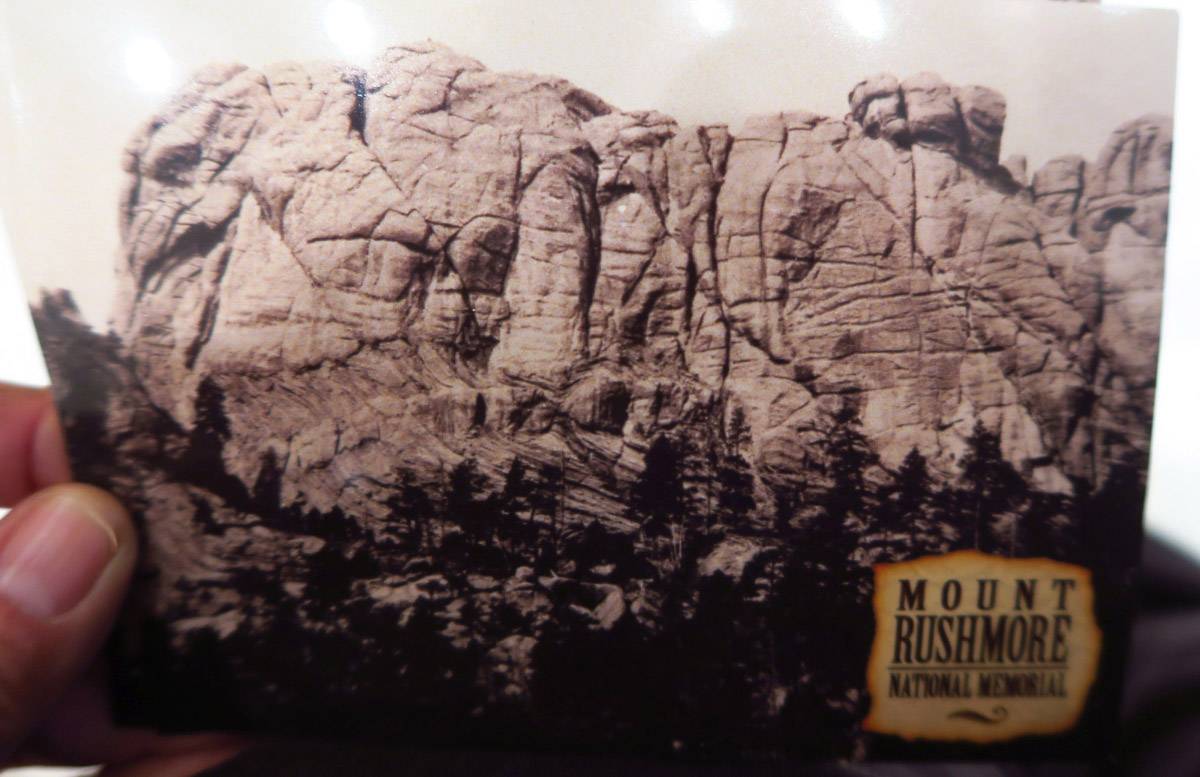 Photo copy of a postcard, the only thing I could find to show what Mt. Rushmore looked like before the sculpting began.

As impressive as it is from the roadside, the entrance and presentation of the national monument serves to enhance the stature. A granite-columned arcade lined with flags from all 50 states, a vast viewing platform, separate Visitor Center, bookstore, museum, and the largest gift shop I’ve seen at any NPS facility lends to its majesty. A short path, the Presidential Trail, allows visitors to get a little closer to the monument, though there are warnings of severe penalties for anyone who would think of attempting an off trail scramble. Sadly, the Sculptor’s Studio at the end of the trail was closed for renovations during the time of my visit. 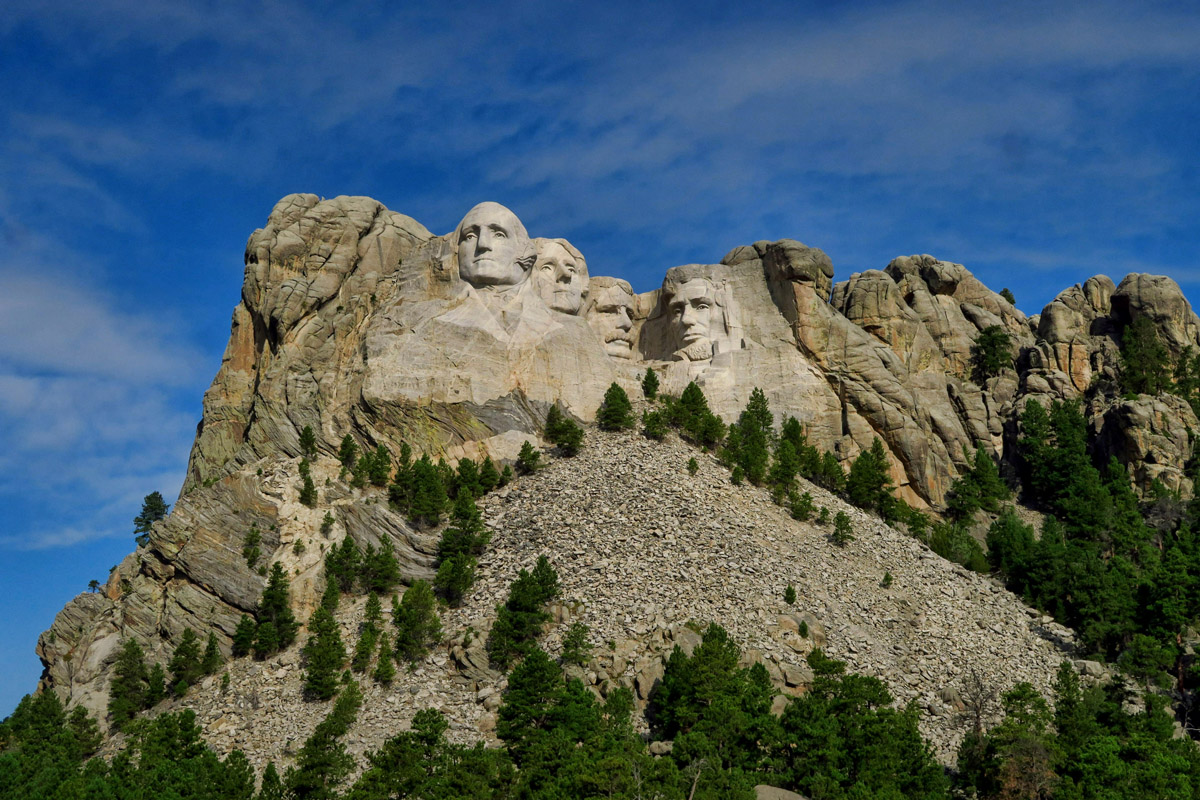 I can’t decide which view to use, so I am throwing them all in… 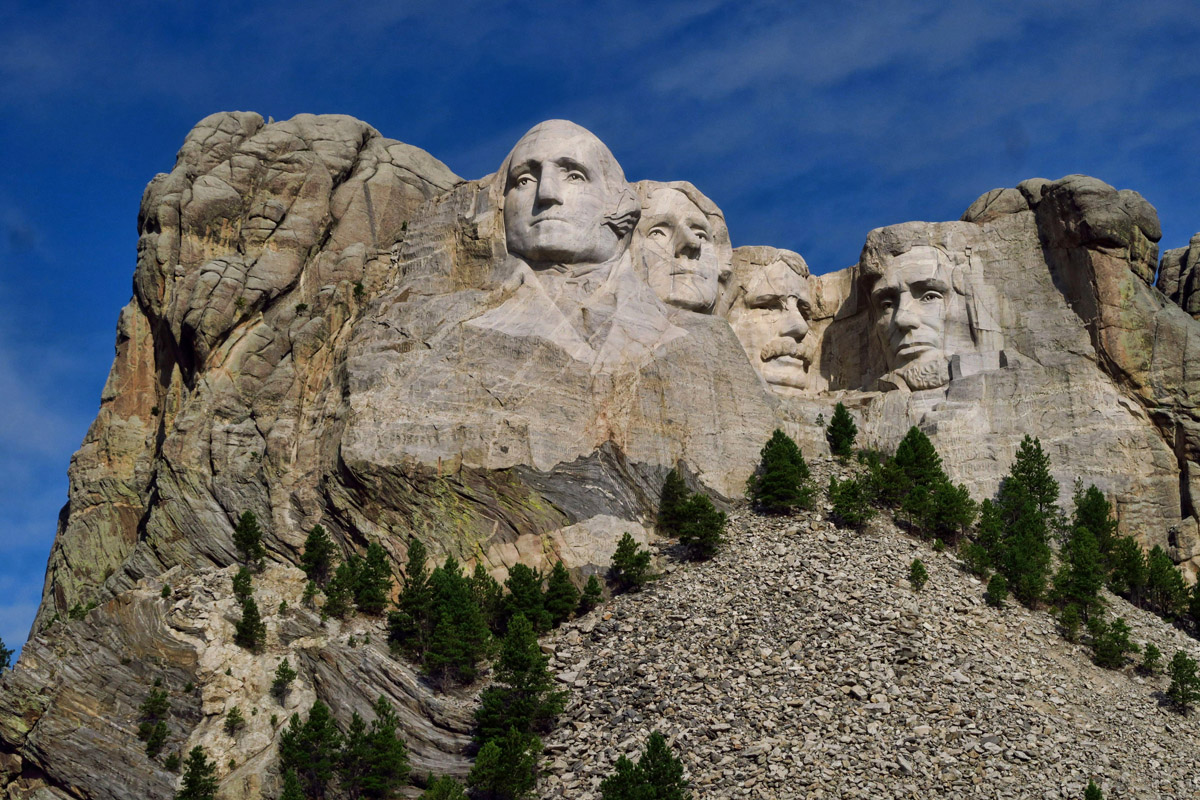 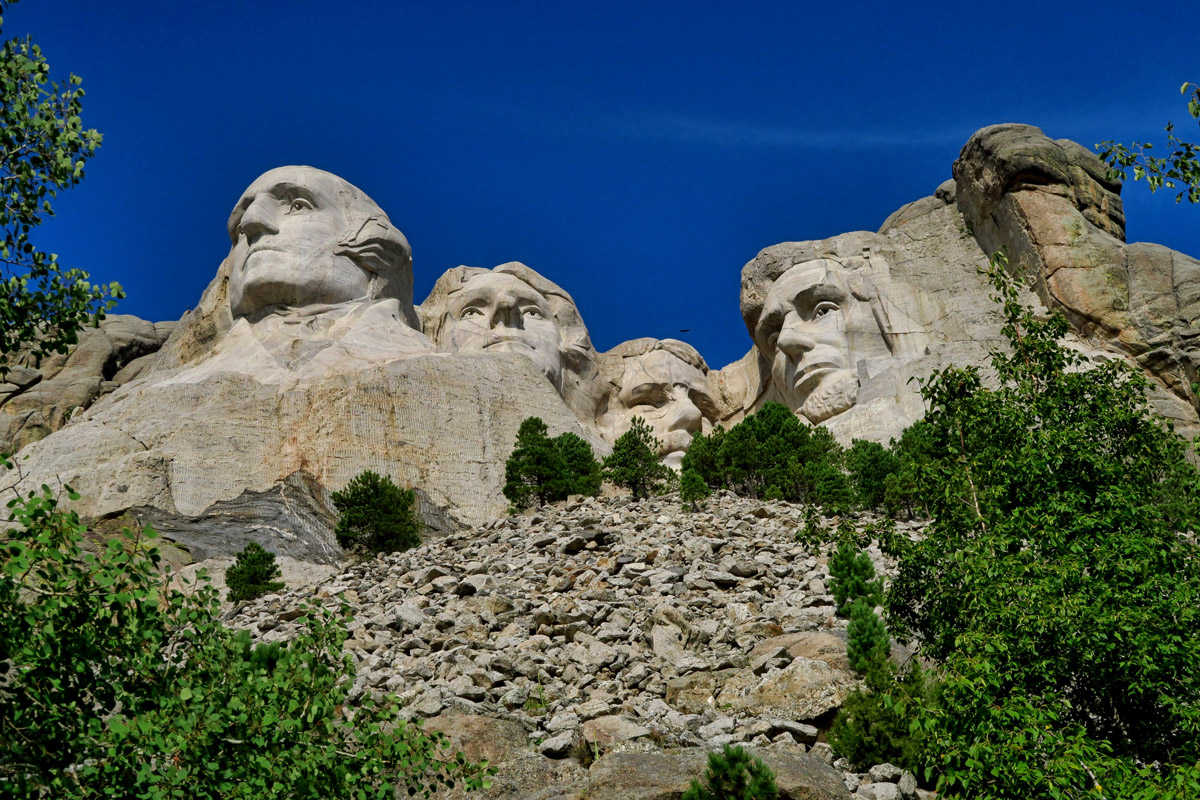 This view is from the Presidential Trail. It’s as close as you can get to the sculpture. I liked this angle because I could see the rim of Roosevelt’s glasses. 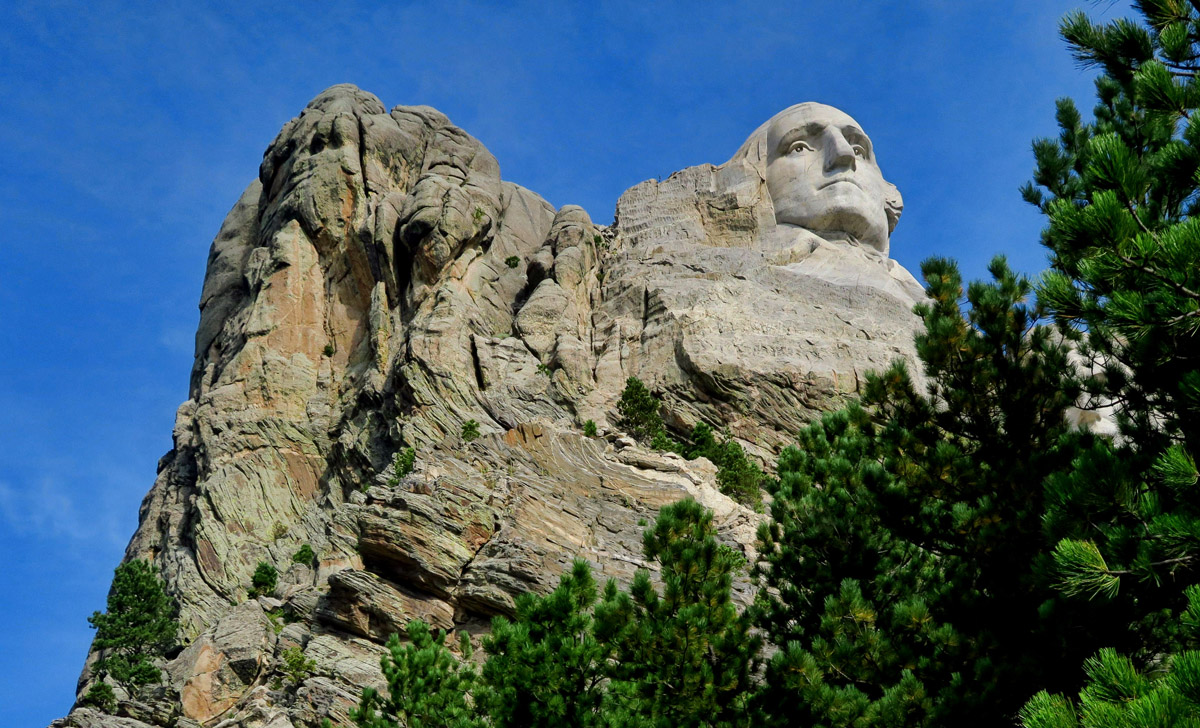 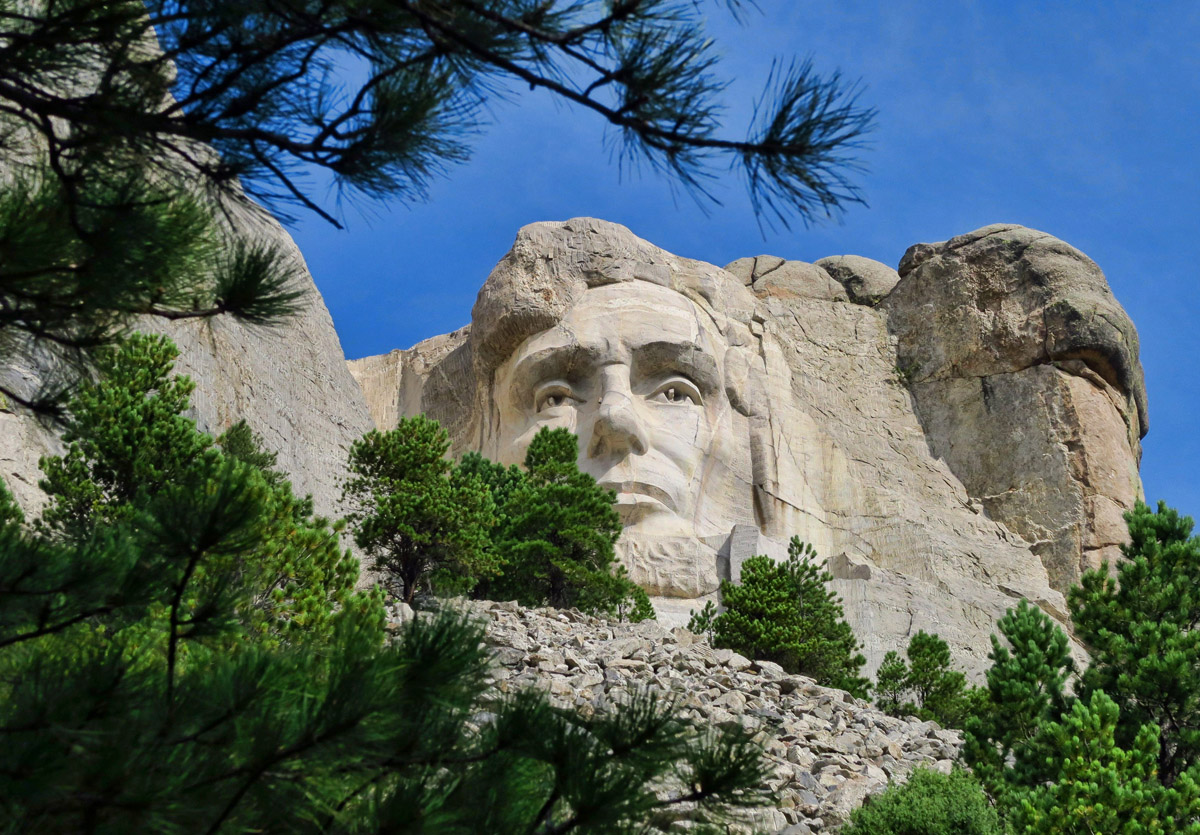 Ninety percent of the carving was done by dynamite, with the remaining 10% being done by chisel.

I always wondered “Why these four?” Oh, sure, Washington and Lincoln without a doubt. But how did the final list come about? According to a museum kiosk, the list was “chosen by the sculptor to commemorate the founding, growth, preservation, and development of the United States. Washington signifies the struggle for independence and the birth of the Republic; Thomas Jefferson the territorial expansion of the country; Abraham Lincoln the permanent union of the States and equality for all citizens, and Theodore Roosevelt, the 20th century role of the United States in world affairs and the rights of the common man.” 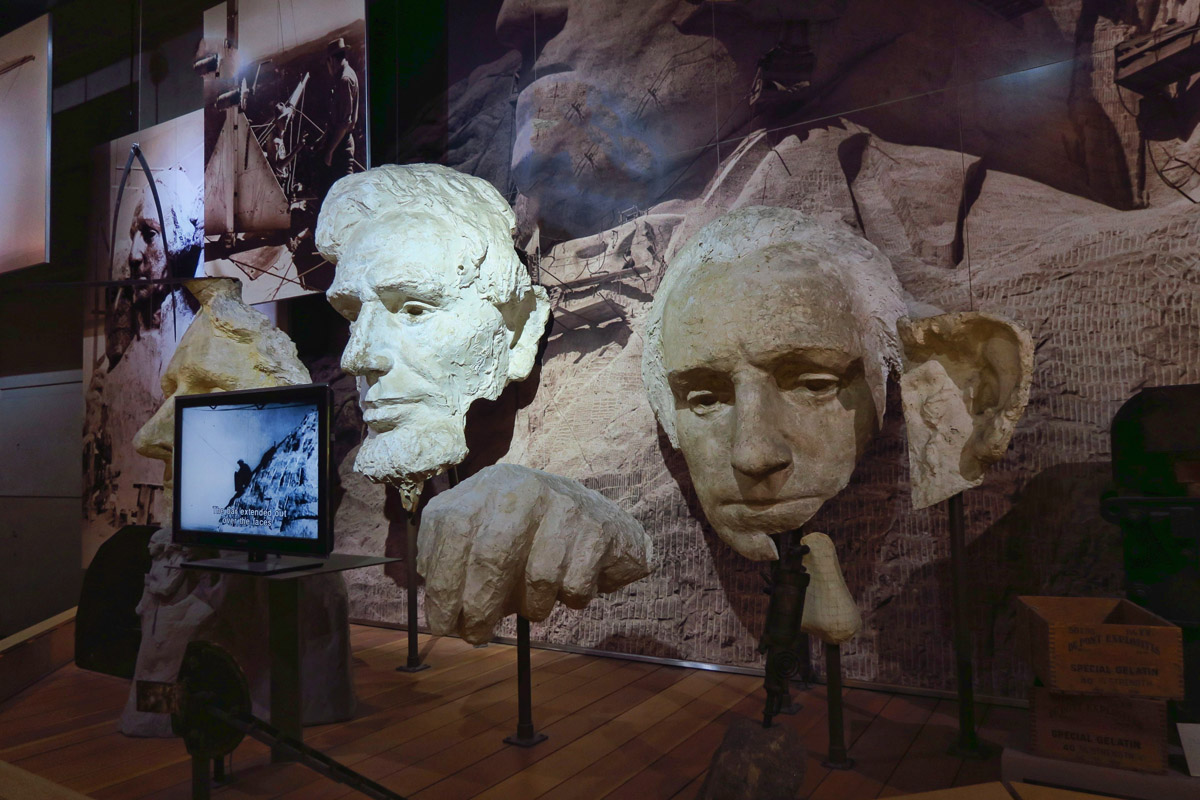 There are some great displays in the museum which explain how the sculpting was achieved. 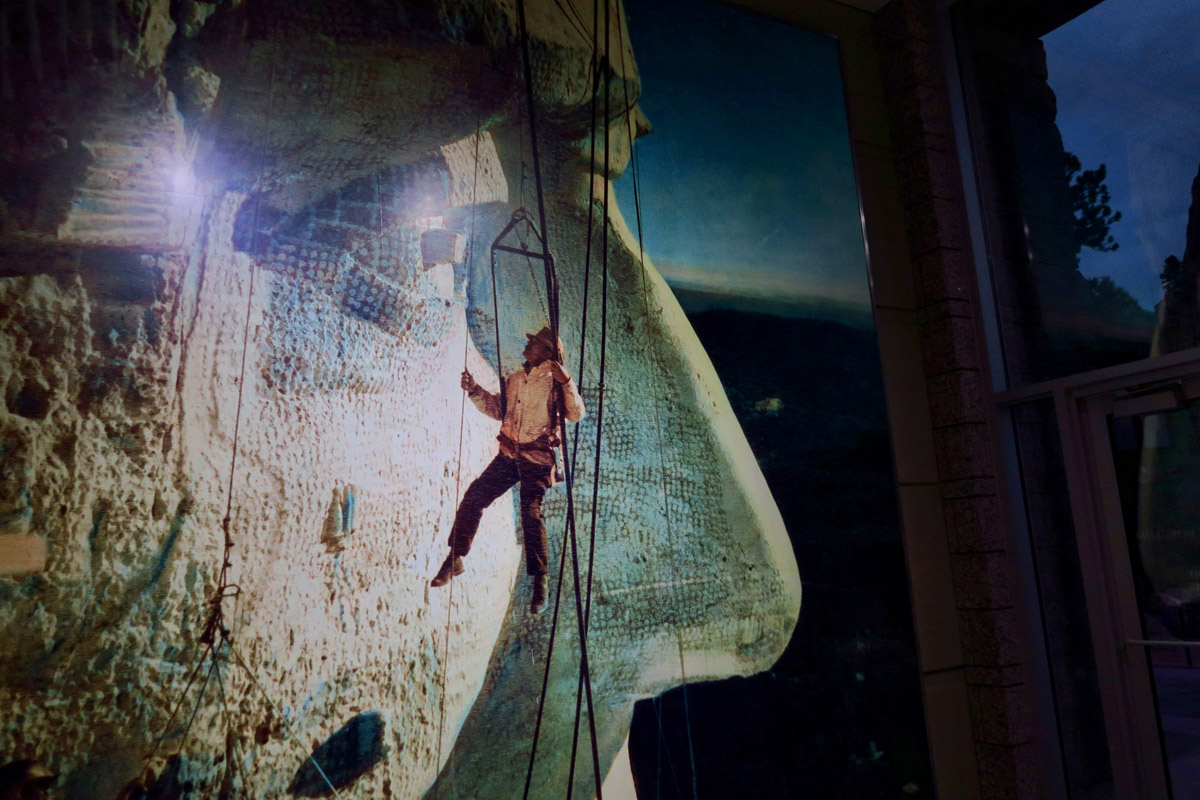 A photo of a photo of one of the workers alongside a 20 ft nose. 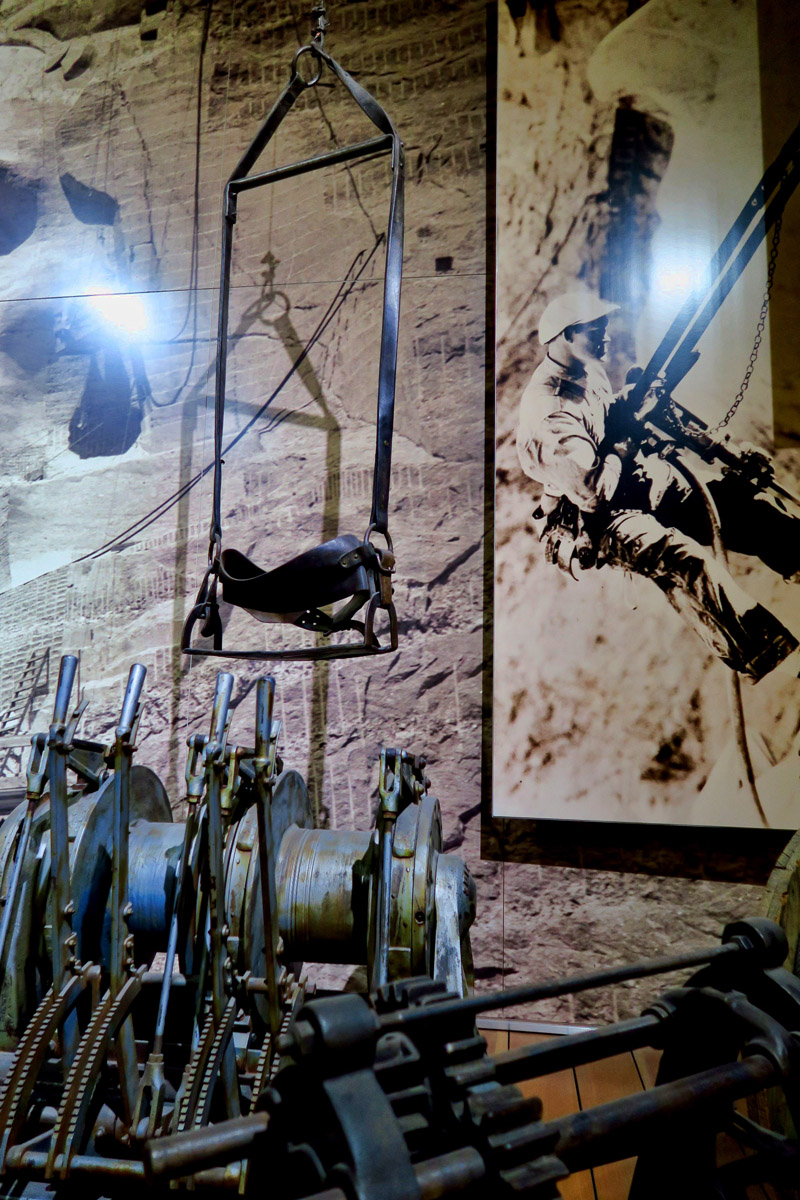 Workers hung from these swing-like chairs while they were chiseling.

The monument originally morphed from an idea that a local historian had to carve statues of famous people from the nearby Needles, tall spindly spires of granite in the Black Hills. The Needles granite spires were deemed too unstable for carving, so they went with Mt Rushmore, named for Charles Rushmore, a New York lawyer who came here on expedition in 1885.

Prior to the Mt Rushmore commission, the sculptor, Gutzon Borglum, a Danish immigrant, initiated the monument to Heroes of the Confederacy carved on the face of the monolith, Stone Mountain, GA, just north of Atlanta. Though he didn’t fulfill the contract, having walked off in a dispute leaving behind only his smashed models as he left, he is credited with initiating the design. The monument to Robert E. Lee, Jefferson Davis, and Stonewall Jackson, all on horseback, is the largest bias-relief in the world. I have to confess, reports of Borglum’s advocacy for “Nordic moral superiority” and affiliation with the KKK are a real buzz kill when observing his works. You will find no mention of these racist tendencies at Mt Rushmore. In fact, there is a bust of him near the entrance, as well as a museum named for him. The only mention in his history is that of being “involved with national politics and local community issues.”

The carving began in 1927 and ended in 1941 at a cost of just under a million. The plans originally intended for the presidents to be carved from the waist up, but lack of funding resulted in the current heads only. Around 400 workers supported the project, remarkably with zero fatalities. 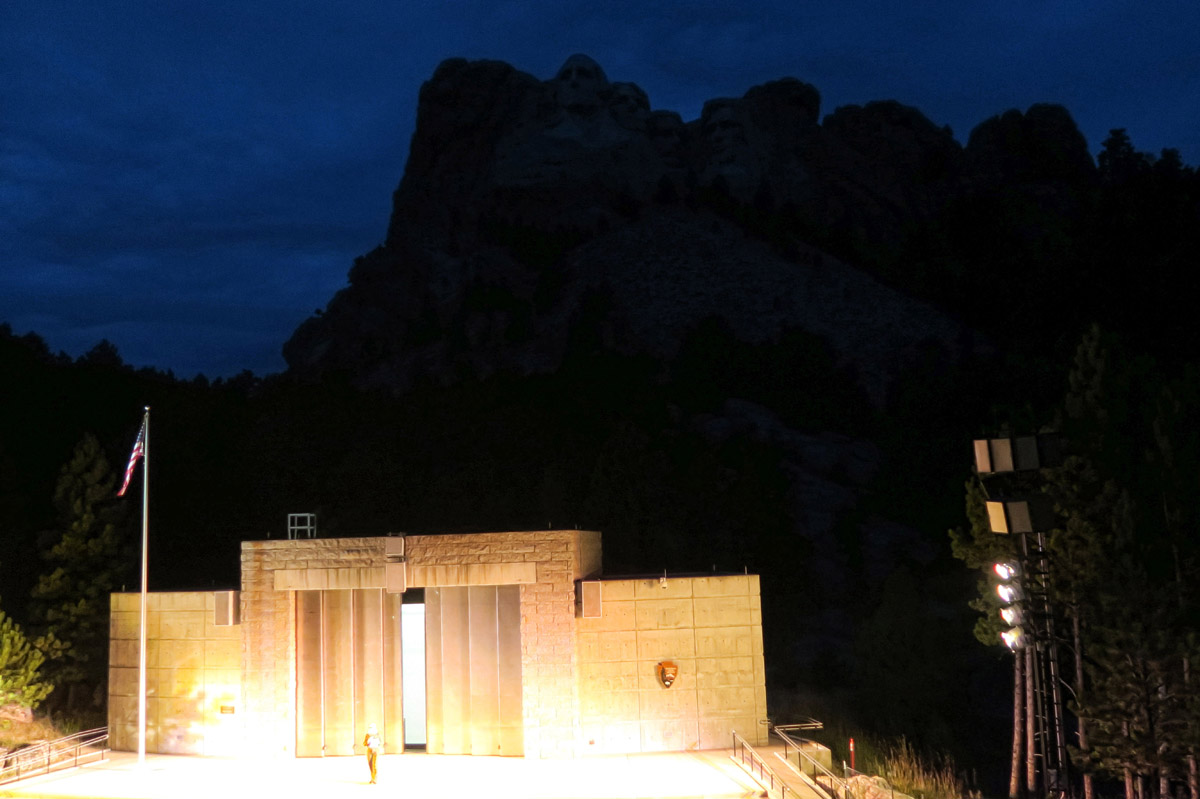 There is a free evening program put on by the NPS which was very impressive. A Park Ranger did a 10 minute talk, followed by a 20 minute video… 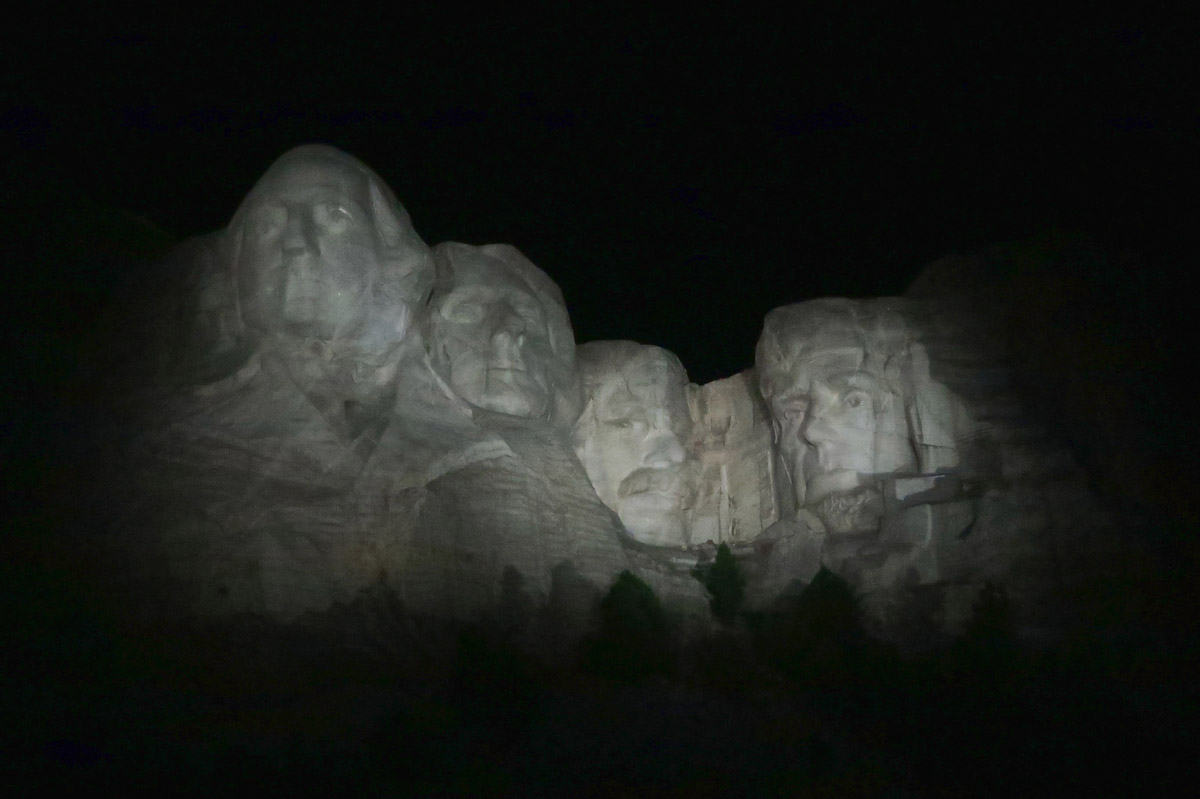 At the end of the NPS Evening Program was a lighting ceremony whereby the sculpture was illuminated by spotlights. 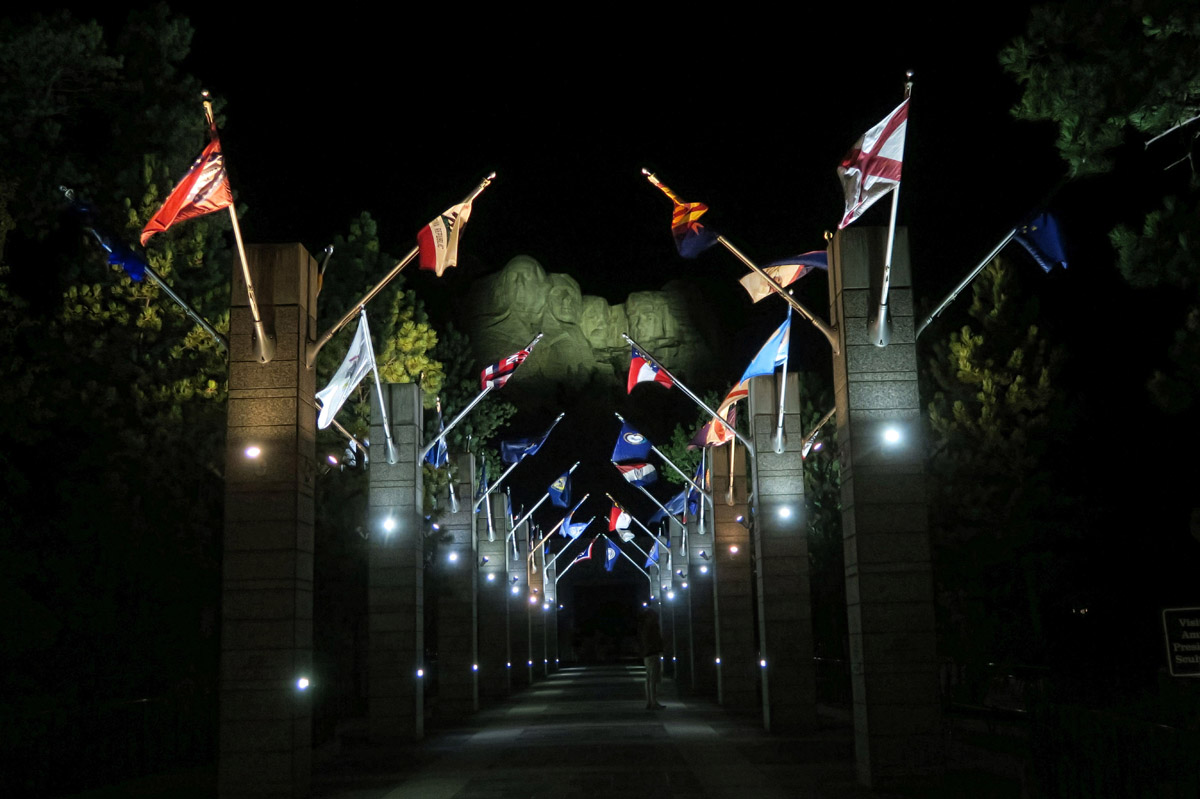 There is no admission charge per se, only a parking pass ($5 for geezers!) that permits re-entry for a year.  So I recommend returning for the evening program, but dress in layers as evenings here are chilly! 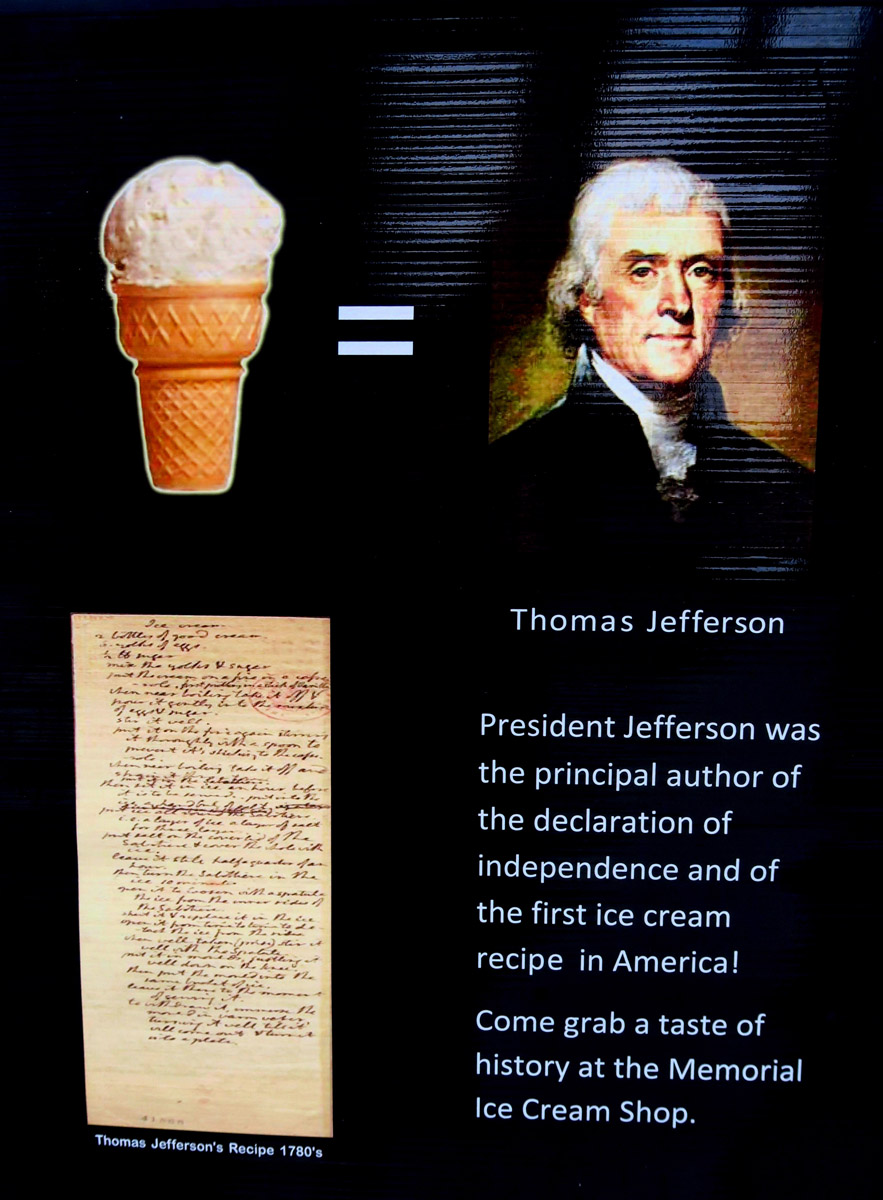 Thomas Jefferson is credited with the first ice cream recipe in America. Copies of the recipe are available in postcard form. 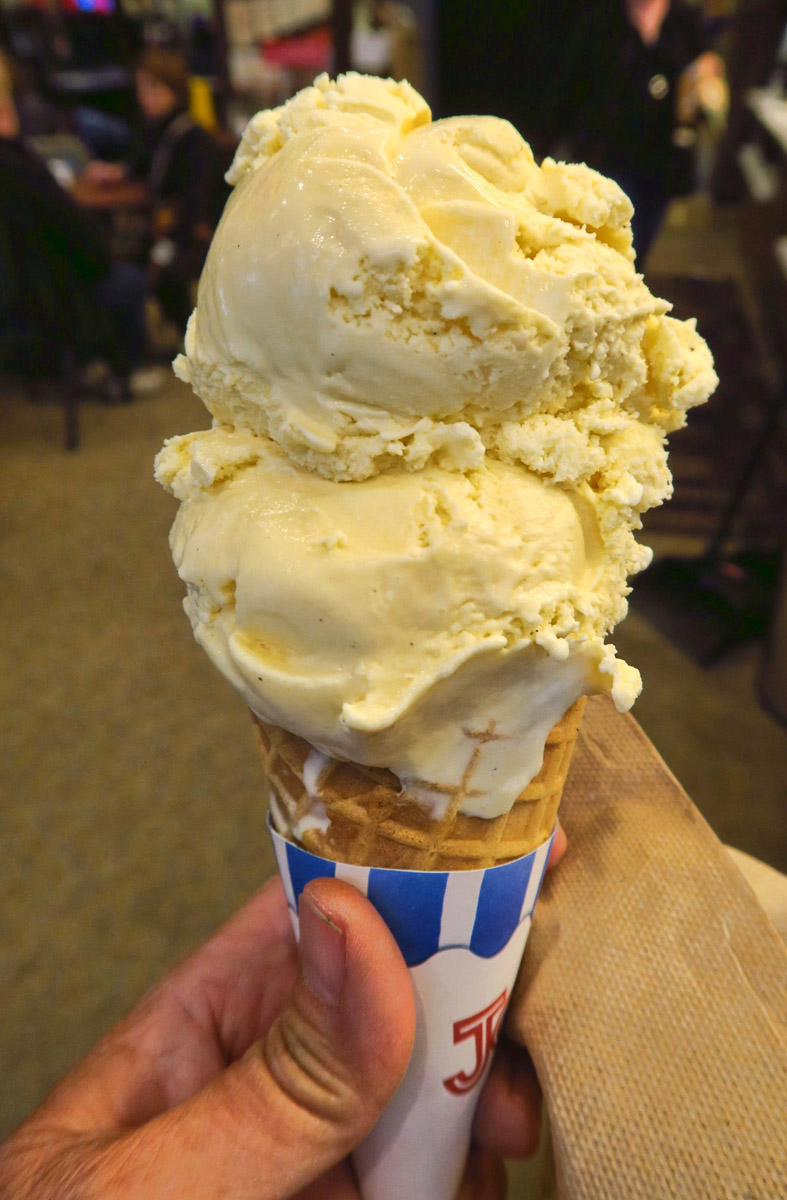 A fellow traveler told me not to miss the ice cream, which was sound advice! “TJ’s Vanilla” was the best vanilla ice cream I have ever purchased!

Just seventeen miles away, construction on a monument of another founding father, Crazy Horse, Native American war leader of the Oglala Lakota, is underway. Larger than the busts at Mt Rushmore with its 87′ head, it was waged as a way to recognize the original “founders” of the Black Hills. The intent was to memorialize the spirit of Crazy Horse, who when asked where his people were now, legend dictates he responded with outstretched arm, “My lands are where my dead lie buried.”

The land encompassing Mt Rushmore was seized from the Lakota tribe during the Great Sioux War in 1876, only to be returned through the Treaty of Fort Laramie from 1868.  However, as history has shown to often be the case, the treaty was not honored.  In 1980 in a Supreme Court ruled in favor upholding the treaty in “The United States vs. Sioux Nation of Indians.”  The Sioux Nation was offered 1877 land value plus 103 years of interest at 5%, but refused payment instead holding out for the return of the land.  Considering South Dakota’s biggest tourist attraction sits in the midst of disputed land, I am afraid they may be holding out for awhile… 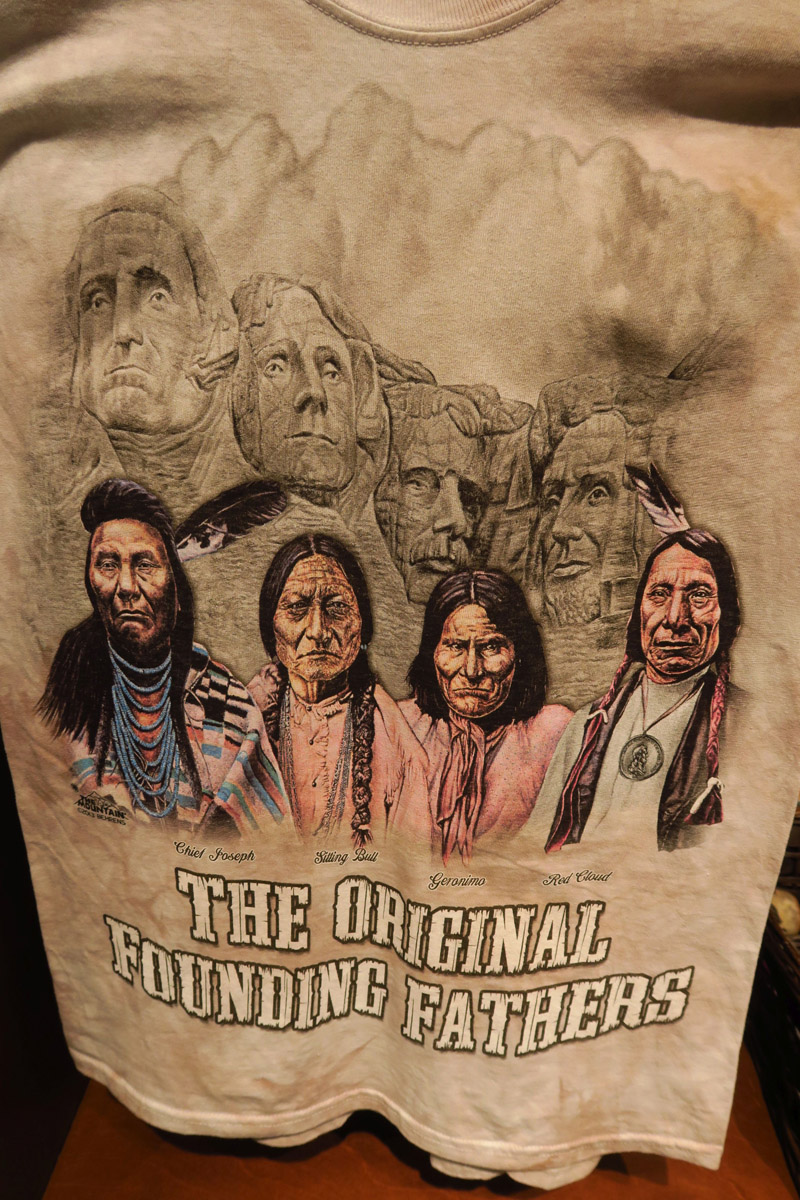 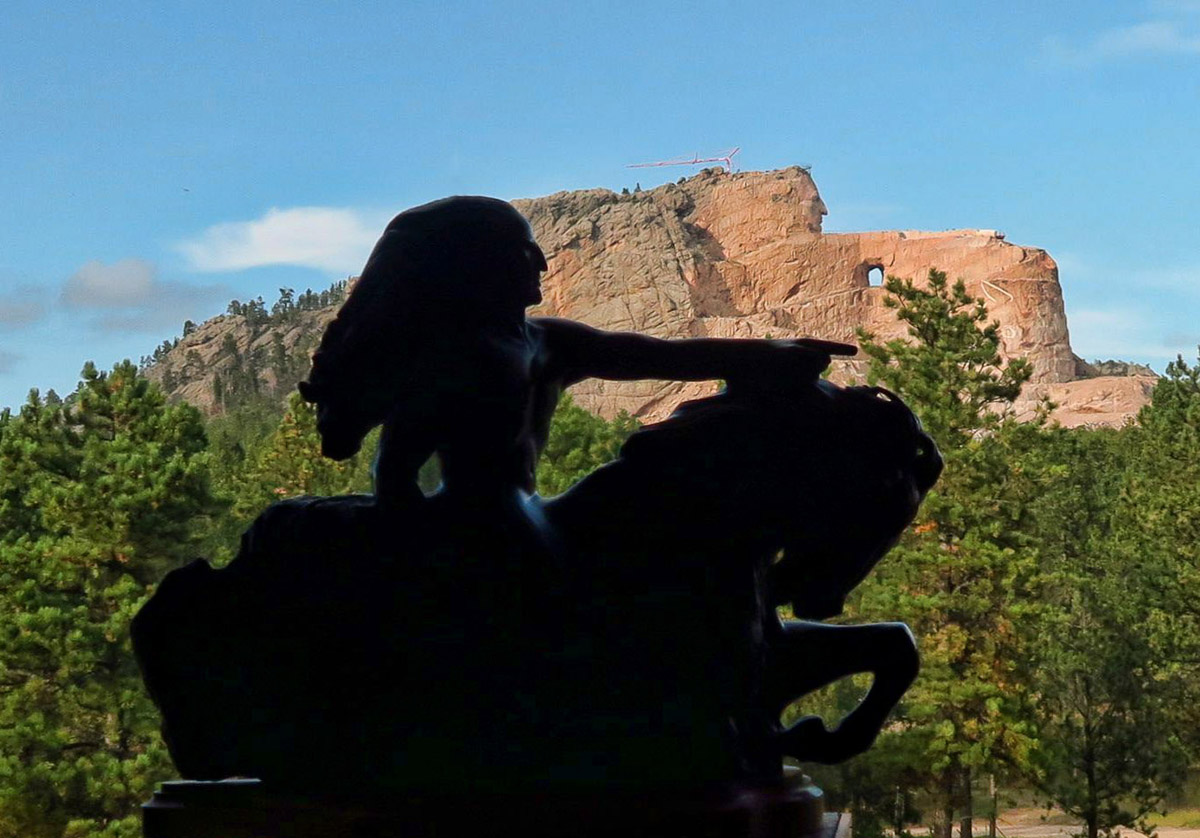 In the foreground of the photo is the model superimposed on the mountain being sculpted in the background. 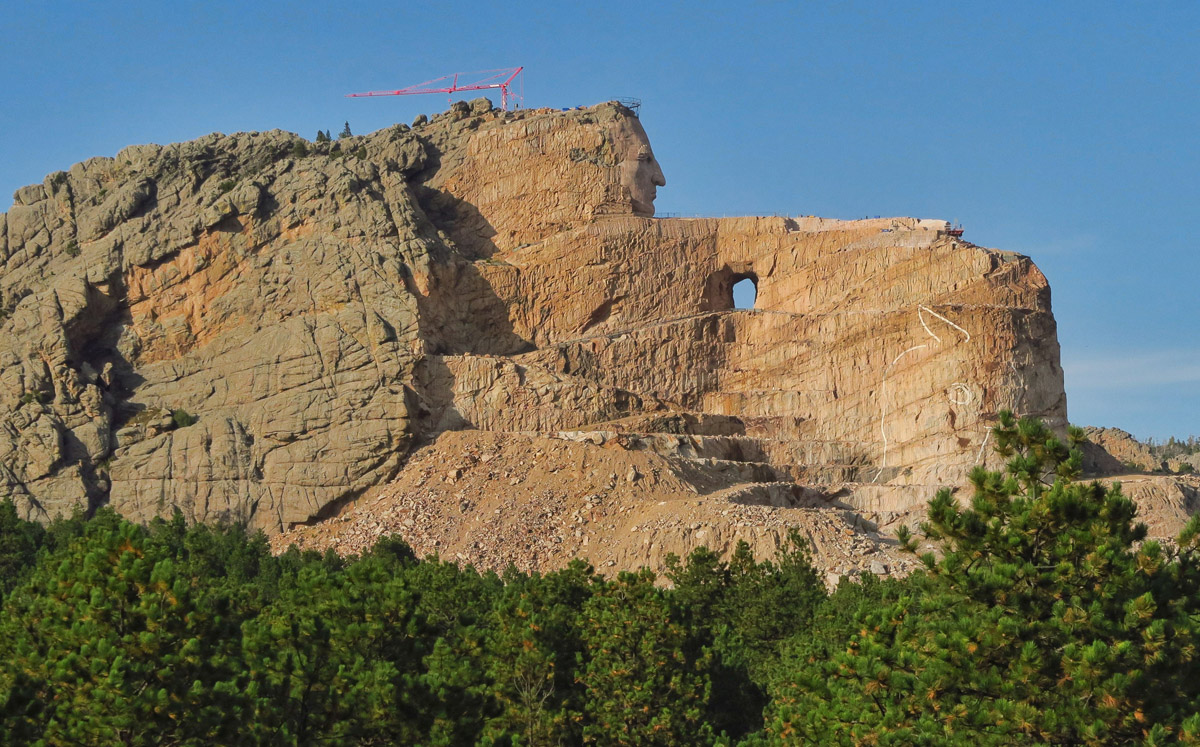 The sculpture was begun in 1948, with no date for completion.

Coincidentally, the Crazy Horse sculptor, Korczak Ziolkowksi (try typing that without a cut and paste!) was also an immigrant, and worked under the tutelage of Borglum. The sculptor of polish decent was commissioned by Henry Standing Bear, Oglala Lakota chief, after Borglum refused his request to have Crazy Horse included in the Mt Rushmore monument, making the case that “My fellow chiefs and I would like the white man to know that the red man has great heroes, too.” 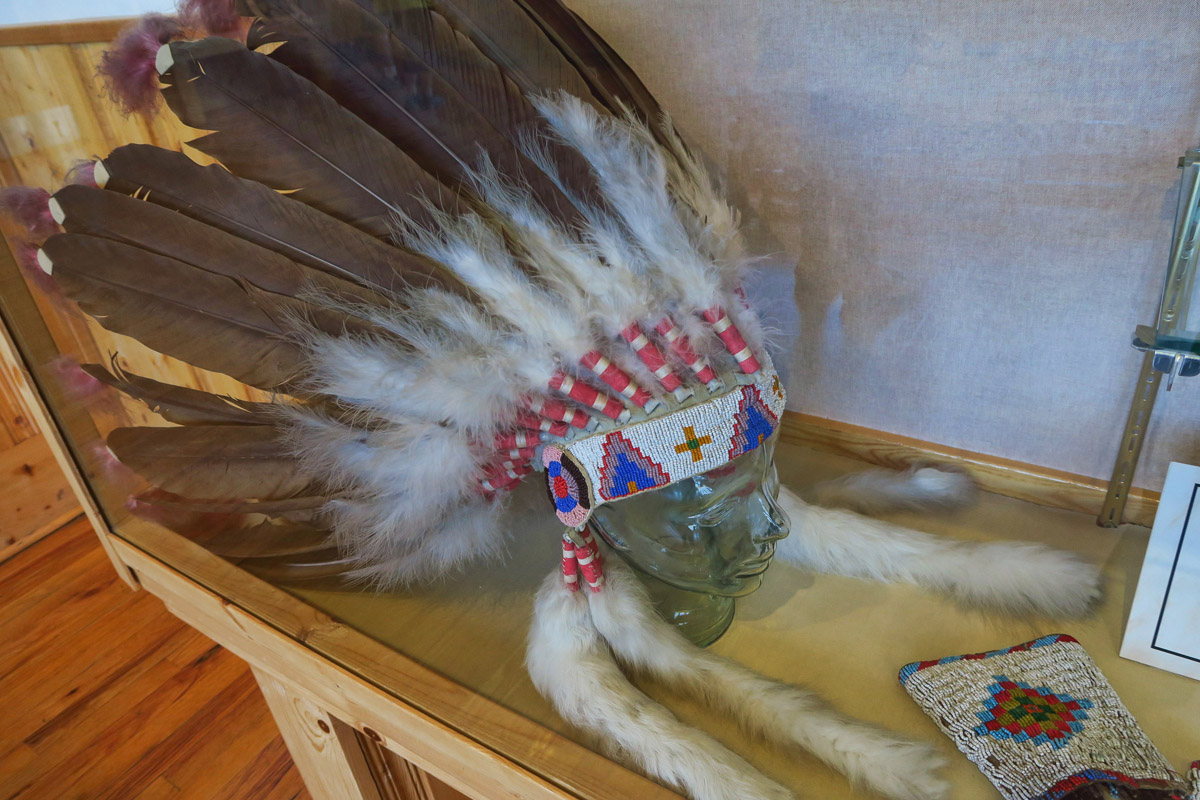 The Visitor Center complex is quite expansive and impressive. 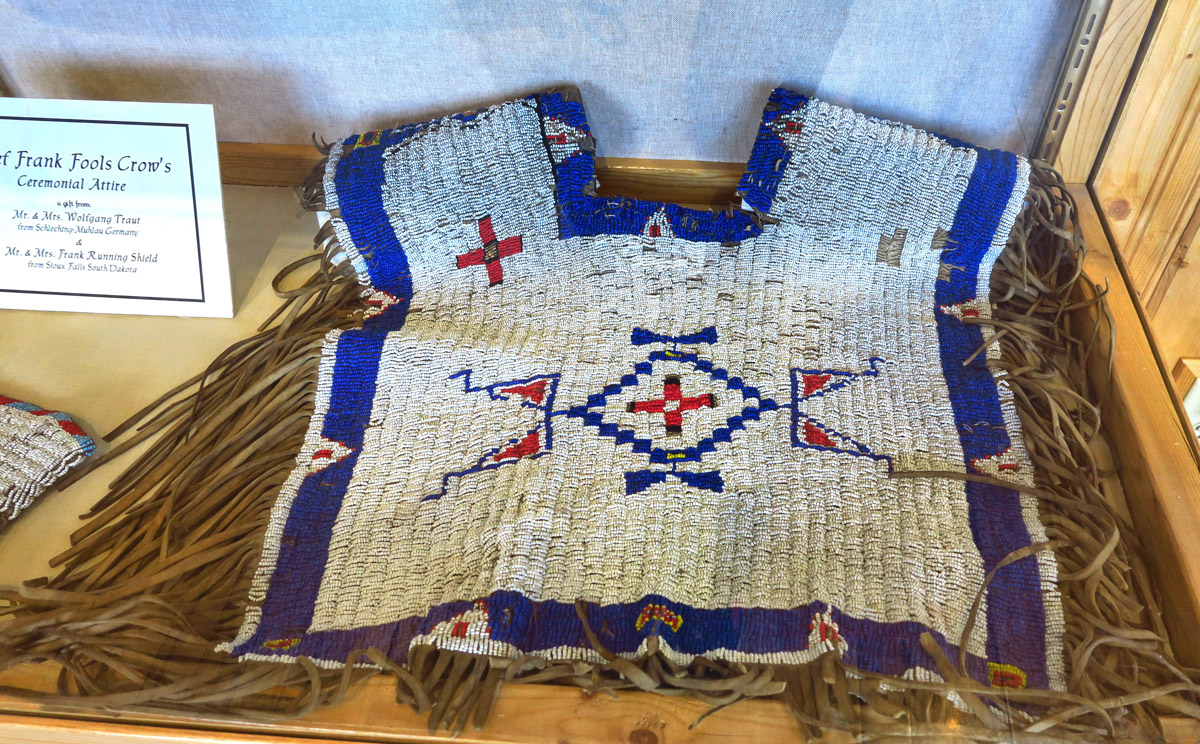 When I have toured Native American museums in the past, I am always disappointed that there are not more clothing artifacts. Not so here, there are dozens! 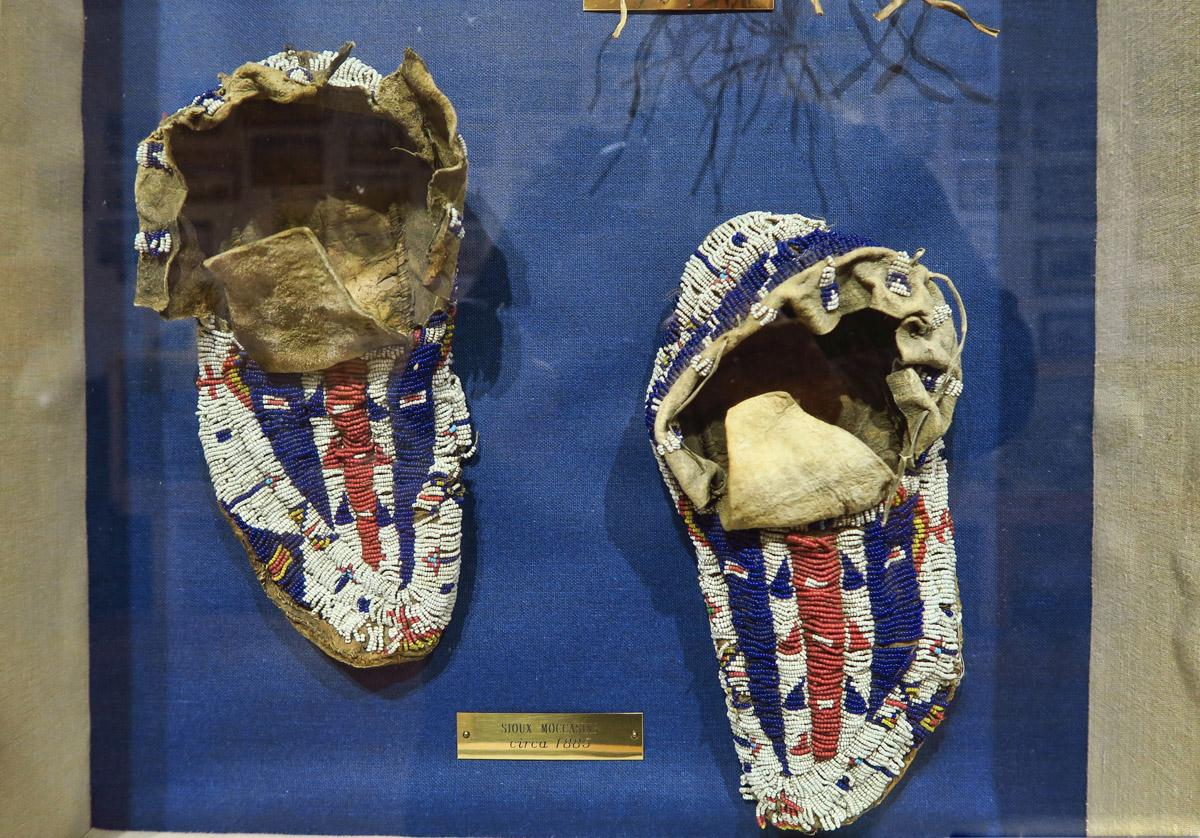 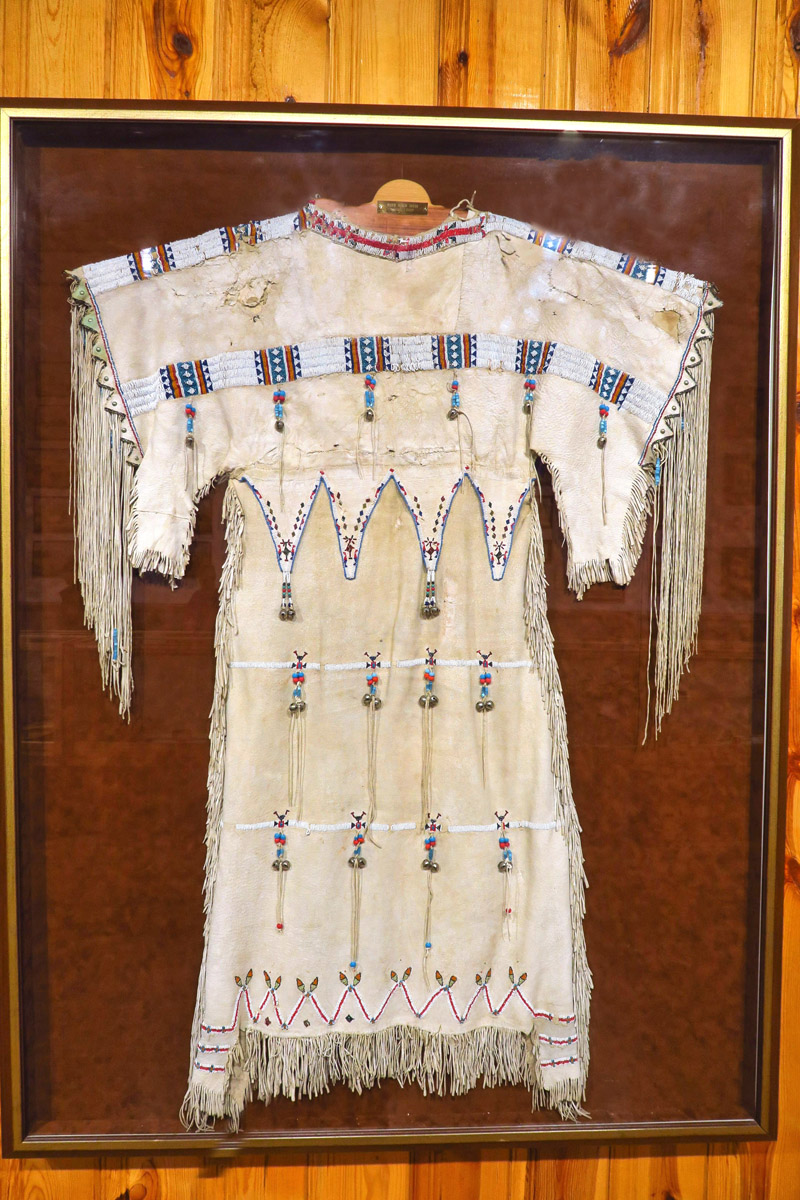 This beautiful dress reminds me of the wedding dress from the movie “Dances with Wolves.” 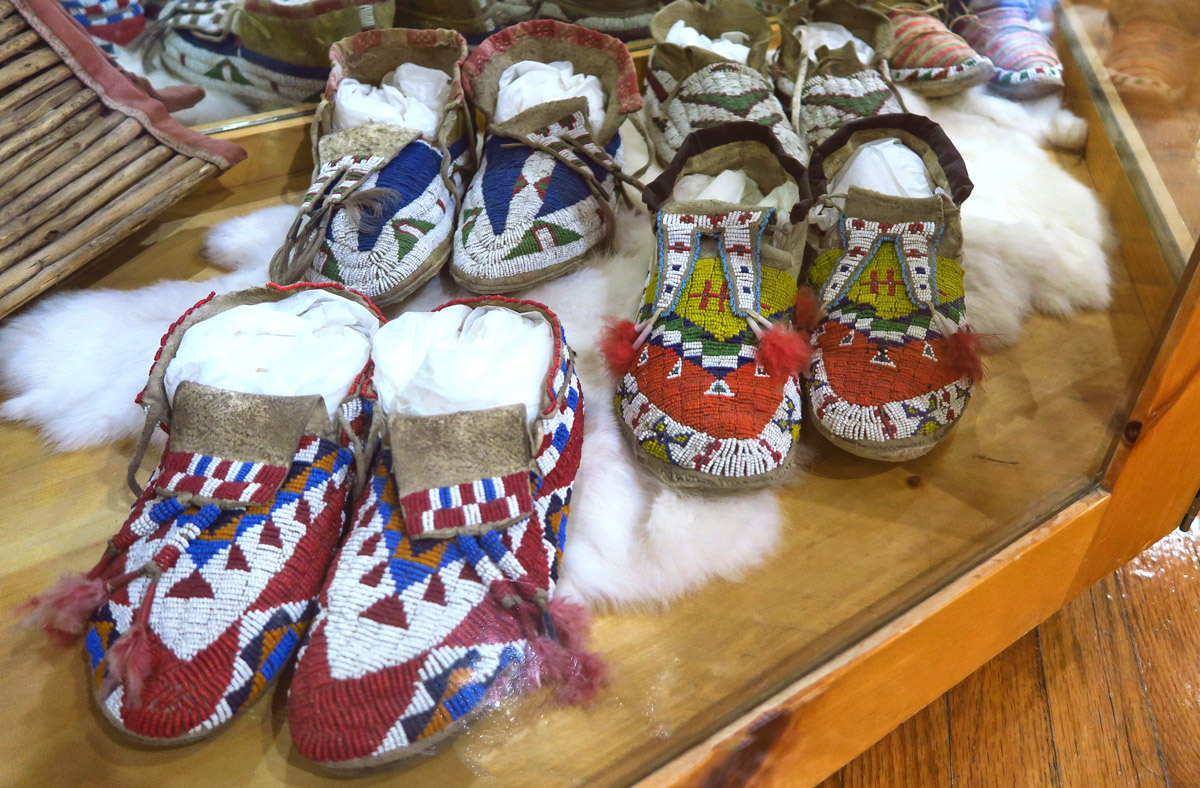 Although it takes only minutes to view the sculpture in the distance, allow time to explore the artifacts.

The monument is being completed ever so slowly through admission fees and donors, accepting no federal or state funding. It has an equally impressive visitor center complex and museum. As with Stone Mountain carving, though, it is not without its own controversy, as many Native Americans feel that the sacred Black Hills are where their ancestors are buried, and therefore should not be carved into images, even going so far as calling it “pollution of the landscape.” 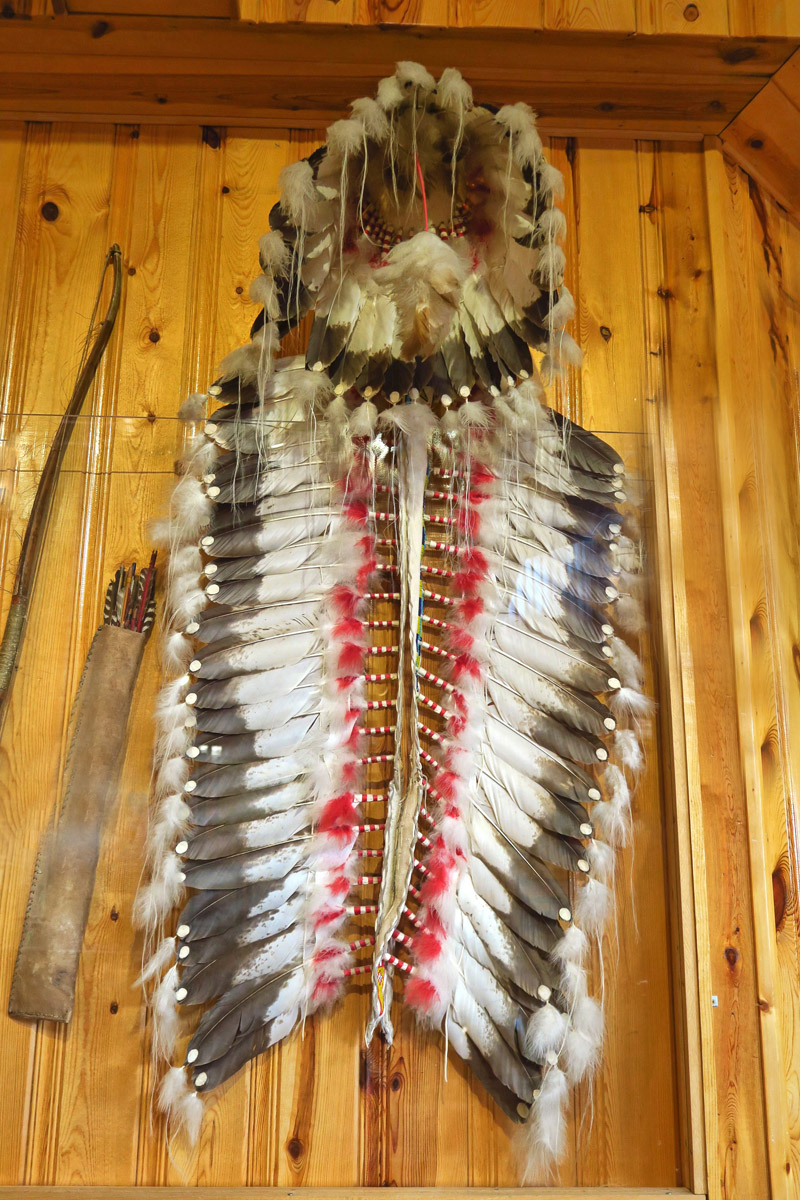 Lots of warrior headdresses on display. 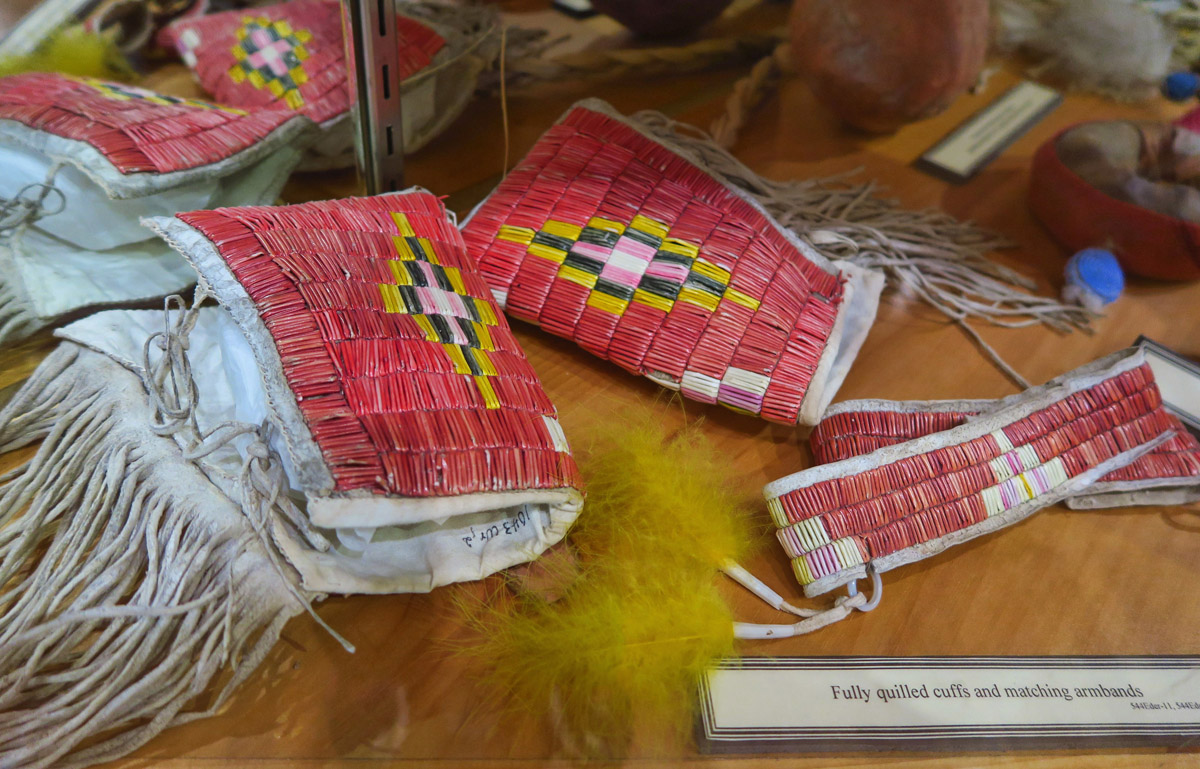 Before glass beads were readily available, they used porcupine quills to adorn their ceremonial attire. 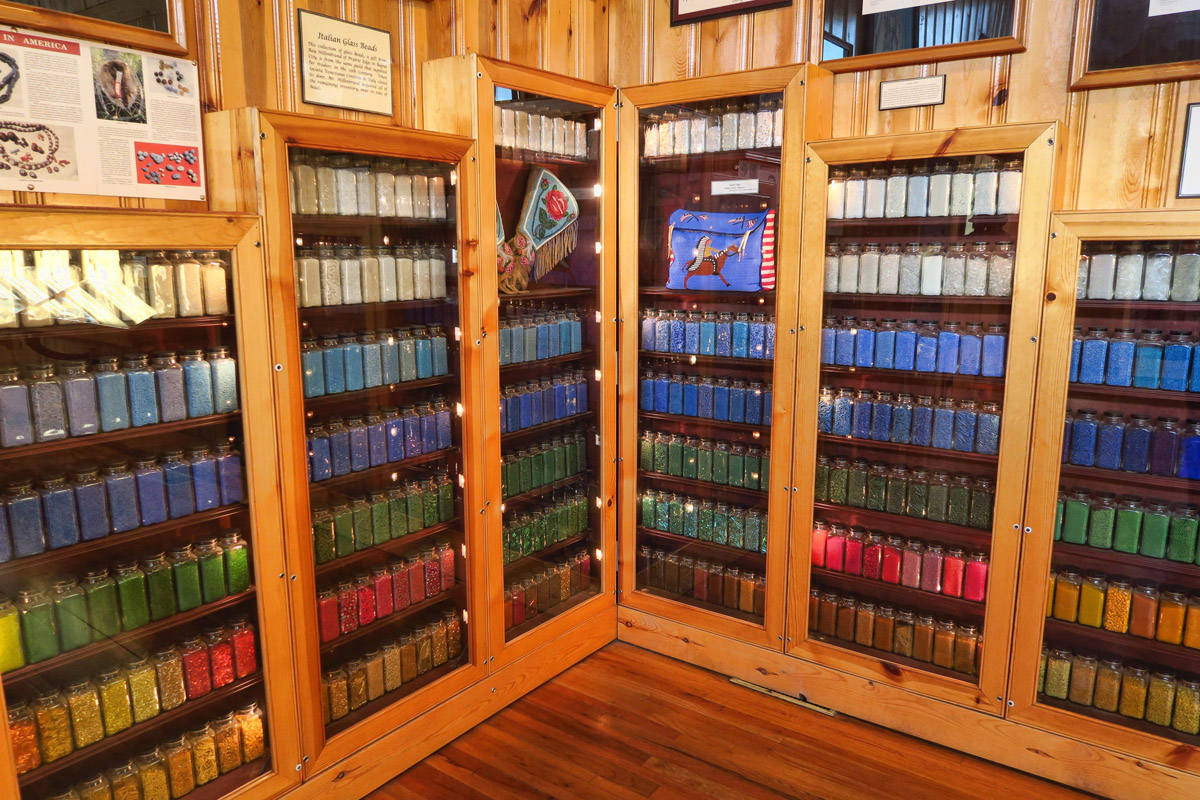 I always wondered where they got the glass beads back in the 1800’s. This question was answered in the museum. Italian fur traders brought them over as collateral to trade for furs. This display is part of a 70 ton collection that came from Societa Veneziana Conterie in Italy. 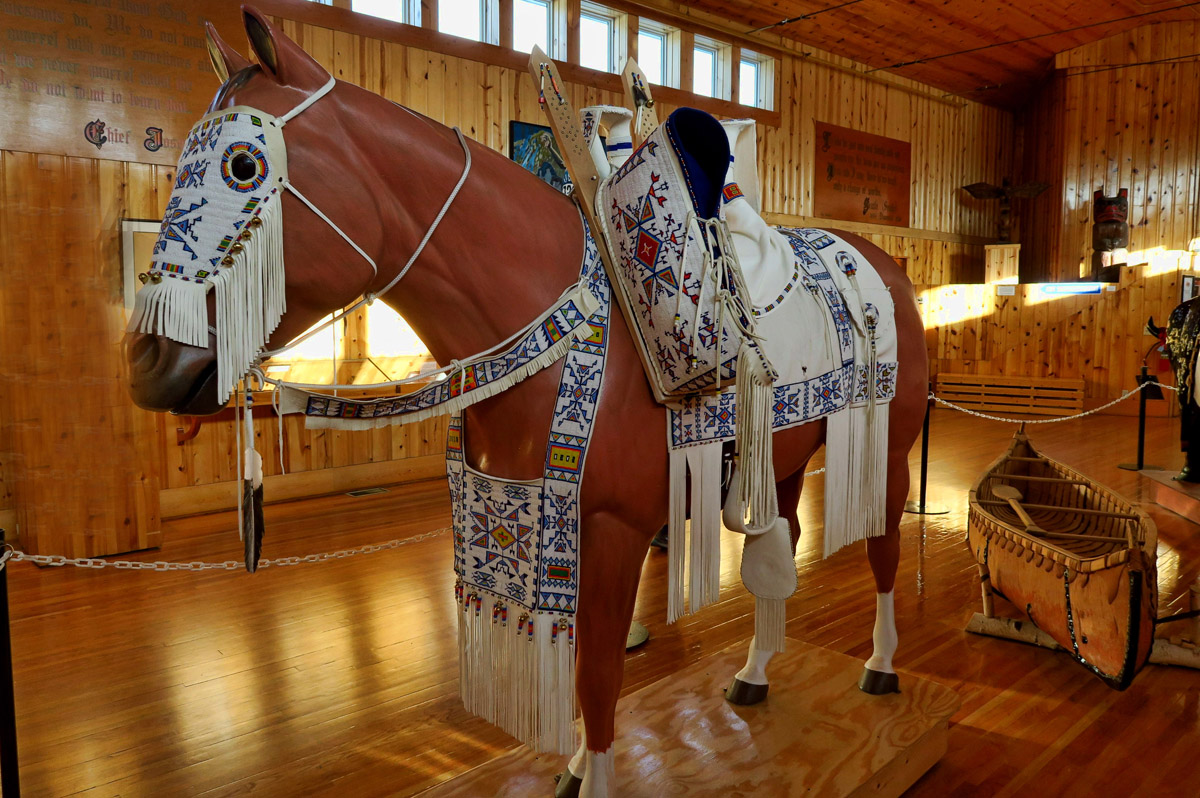 Beautiful beaded costume for the horse.

Favorite quotes from both monuments:

“We, here in America, hold in our hands the hopes of the world, the fate of the coming years; and shame and disgrace will be ours if in our eyes the light of high resolve is dimmed, if we trail in the dust the golden hopes of men.”
~Theodore Roosevelt

“They made many promises more than I can remember. They never kept but one; They promised to take our land, and they took it.”
~Red Cloud

9 thoughts on “Defining Our Founding Fathers”