Mount Rushmore acts as the cornerstone to a well traveled loop that most commonly begins in Keystone, SD, drops down along the Iron Mountain Road, loops through Custer State Park, and back up along the Needles Parkway. This recommended loop is 67 miles, a bit of a stretch for the aging old man, my 1994 GEO Tracker. I don’t usually like to push him to such limits unless it’s out of necessity, but rather save him back for more utilitarian jobs.

But the scenic loop is a key feature of the Black Hills with bridges and tunnels too narrow for the Winnie. And the speed limit will be slow, so I figure he’s overdue for a pleasure ride. It’s a gorgeous day in the Black Hills of South Dakota, so I do something I rarely do these days…I put on an extra layer of clothing so I can drop the rag top. 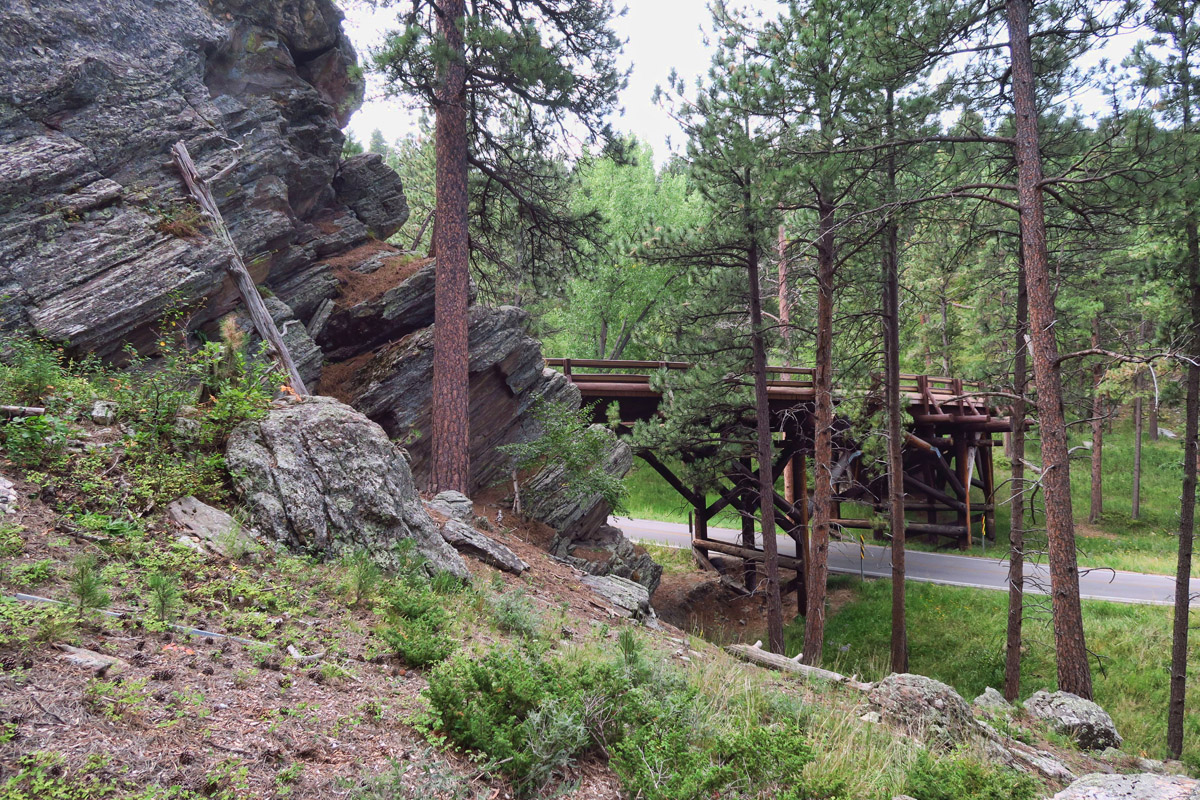 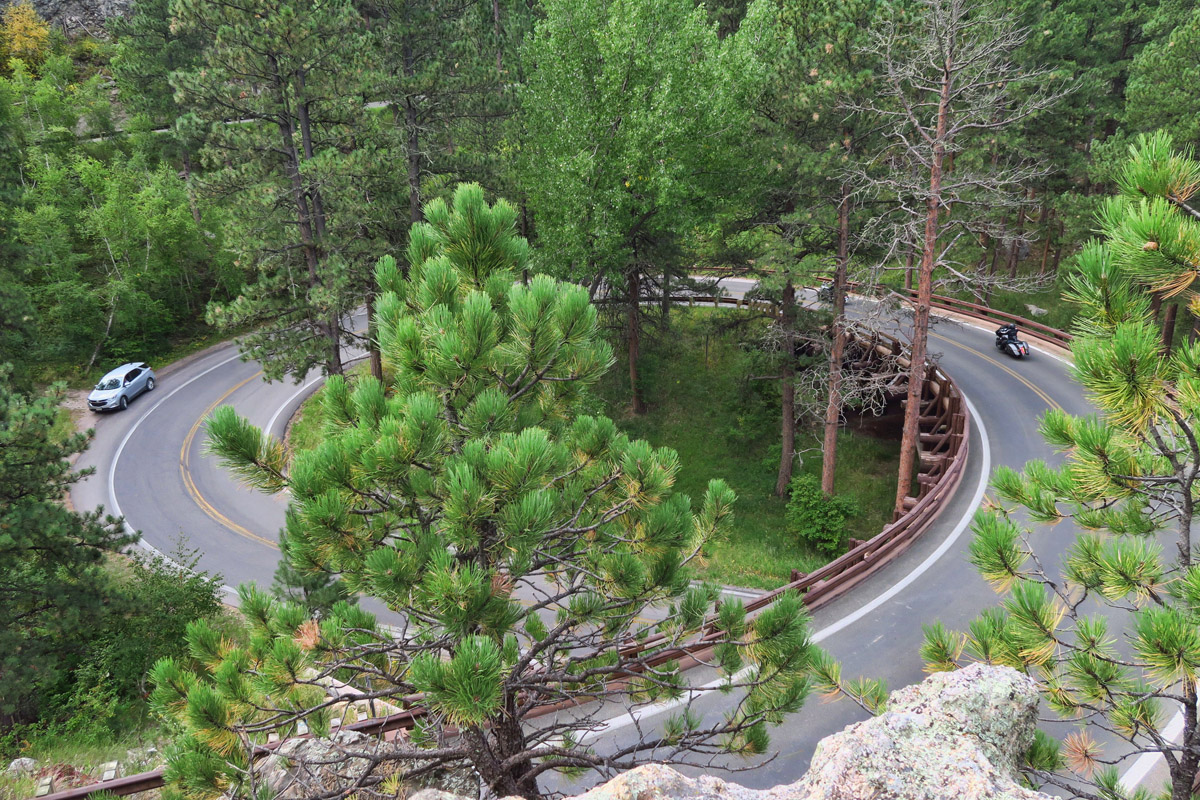 One encounters two “Pigtail Bridges” right at the start. These are 360° turns that increase elevation. 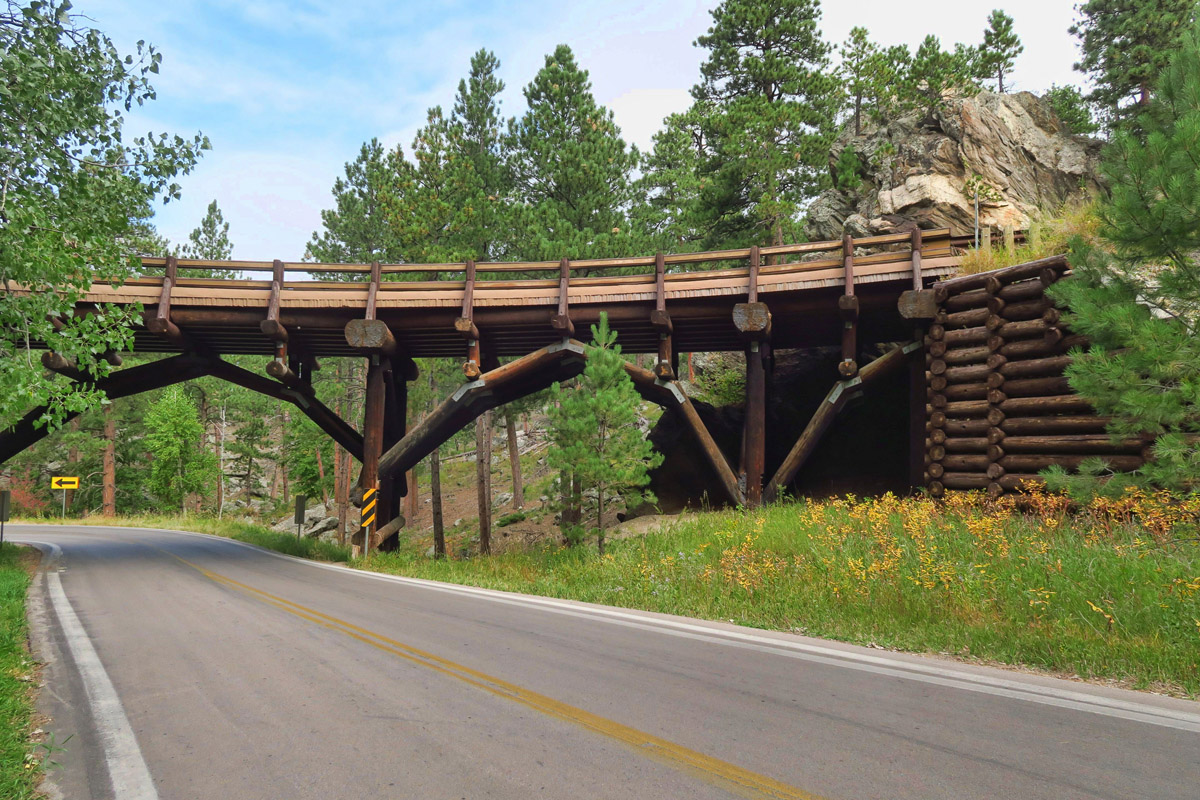 These Pigtail Bridges were constructed in 1932, designed by Cecil Clyde Gideon, a self-taught highway designer.

Gideon and Senator Norbeck designed Iron Mountain Road. They wanted the bridges to blend with natural surroundings, so local logs were used.

Iron Mountain Road is a blast to drive, even if it weren’t for spectacular scenery through the Black Hills National Forest at every turn. With its 17 miles of 314 curves, 14 switchbacks, 3 tunnels and 3 pigtails (360 degree turns to gain elevation,) it’s a thrill, even in a 24 year old car. The Tracker’s short wheel base takes the turns and corkscrew bridges hugging the curves like a race car.

The tunnels along Iron Mountain Road were blasted to frame the four faces of Mt Rushmore. The road was completed in 1933 with the work of only 16 men. This road, along with the Needles Highway were both projects led by Peter Norbeck, South Dakota’s Governor, then later Senator. Norbeck was also credited with creating Custer State Park. He was an advocate for natural resource conservation, and was also involved with planning and supporting the bill that established Grand Teton and Badlands National Parks. 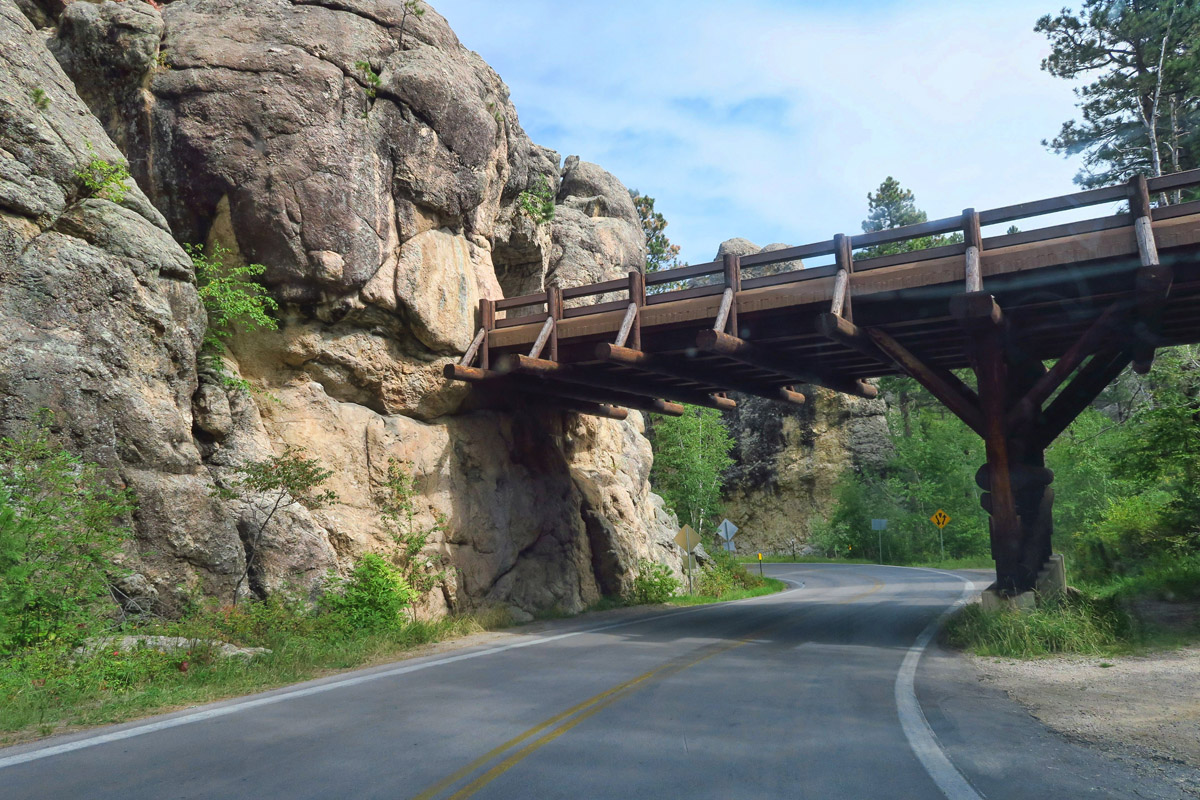 The bridges wind around to increase elevation to enter the tunnels.

The tunnels open up to frame a view of Mt Rushmore in the distance. 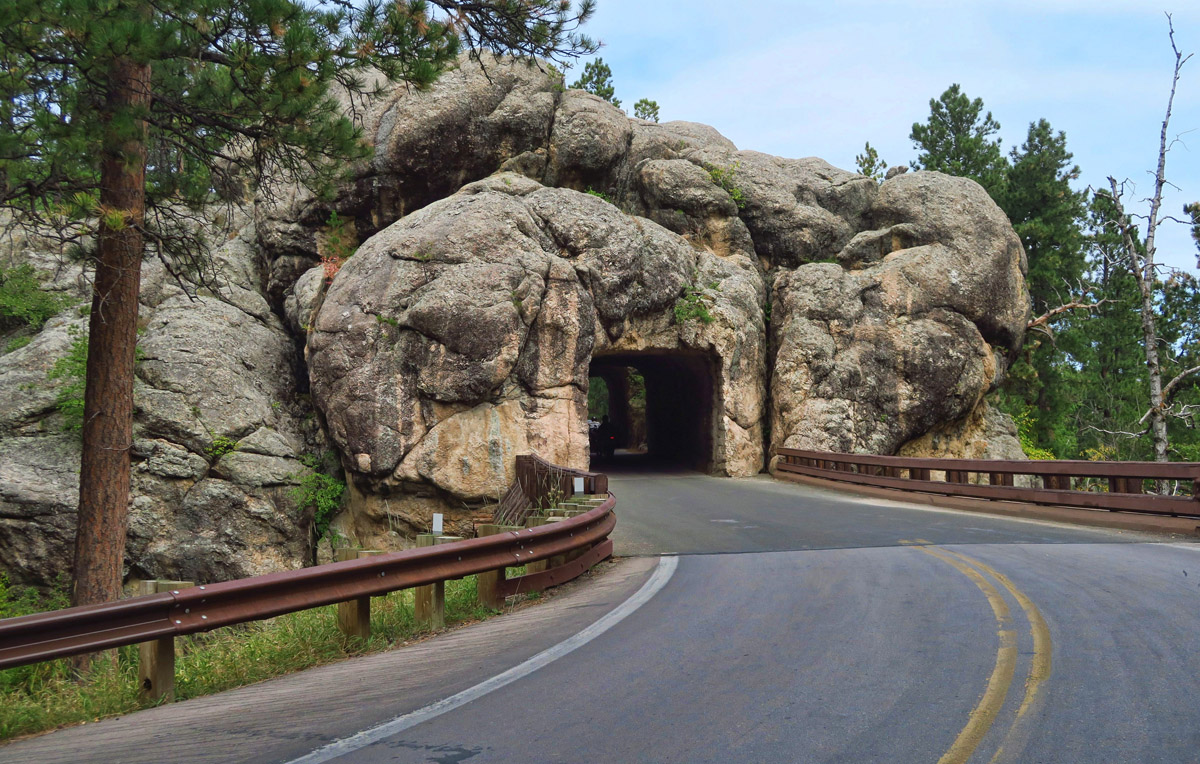 Yet another project where the CCC was instrumental.

Heading out from Keystone, with Iron Mountain Road on the down side of the loop and Needles Highway on the up side, that leaves Custer State Park to round out the bottom of the loop. It costs twenty bucks just to drive through Custer State Park (no senior discount!) Though that price is good for a week, it’s still a bite out of the budget for a retiree just for the sake of a joy ride. 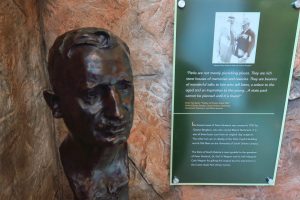 Inside the Custer State Park Visitor Center is a bust of Senator Peter Norbeck sculpted by Borgham, the same artist who designed Mt Rushmore. Norbeck was considered the “father of Custer State Park.” 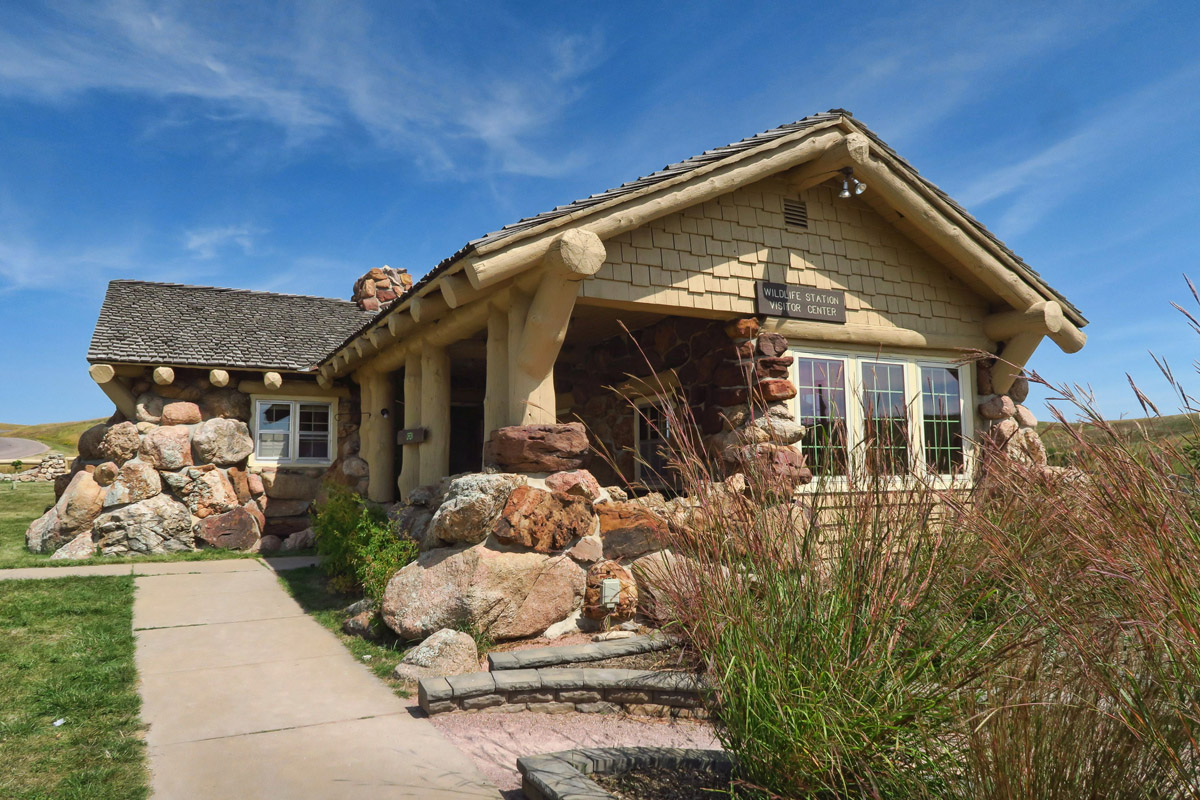 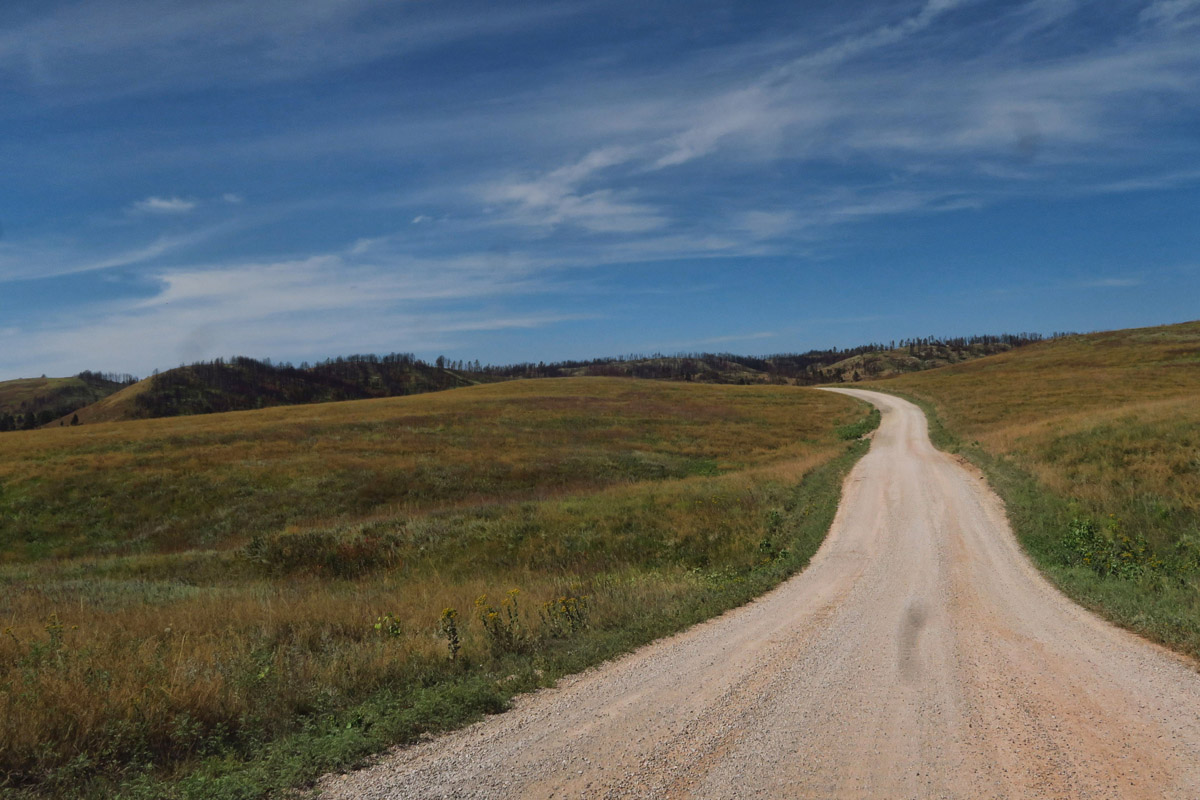 The wildlife loop through Custer State Park certainly looks like the perfect setting for bison herd, doesn’t it?

But I want to see some bison, darnit! Custer State Park is known for its Bison Roundup which happens at the end of September when they round up the herd into corrals. Some are sold off to maintain a balance in the number of the herd versus range land, as the park does not feed the bison. They are sustained by grazing only.

During roundup, the calves are branded and vaccinated. Crowds come from all around to watch the herd as the move across the plains during this event. But my timing is not good to catch the roundup, so I have to hope I can find a few while driving the State Park’s “Wildlife Loop.”

I learn from the kiosk in the Visitor Center that I’ve been calling them by their wrong name. Perhaps that is why they have eluded me. According to a kiosk inside the park, they are a member of the buffalo species, but “bison” is a more accurate name. The kiosk reads, “Though commonly referred to as buffalo, bison are distinct from other buffalo. Different buffalo species inhabit South Africa and Southest Asia. The name ‘buffalo’ for bison arose in the mid 1800’s from the French word ‘Les boeufs’ meaning oxen and beef cattle.” So I drive…and I drive…and I drive, even calling out in my frustration, “Here, bison, bison, bison…”

Finally, I come to a traffic jam up ahead. It’s four bison ambling slowly up the hill. I get in line with the rest of the cars, waiting for the obligatory “bison crossing the road” photo. I figure I got lucky with my timing, and resolve to be happy with my wildlife sighting for the day, coming to resolution that driving the scenic loop in its entirety is worth the twenty bucks. So I continue on my merry way, content with my close encounter. 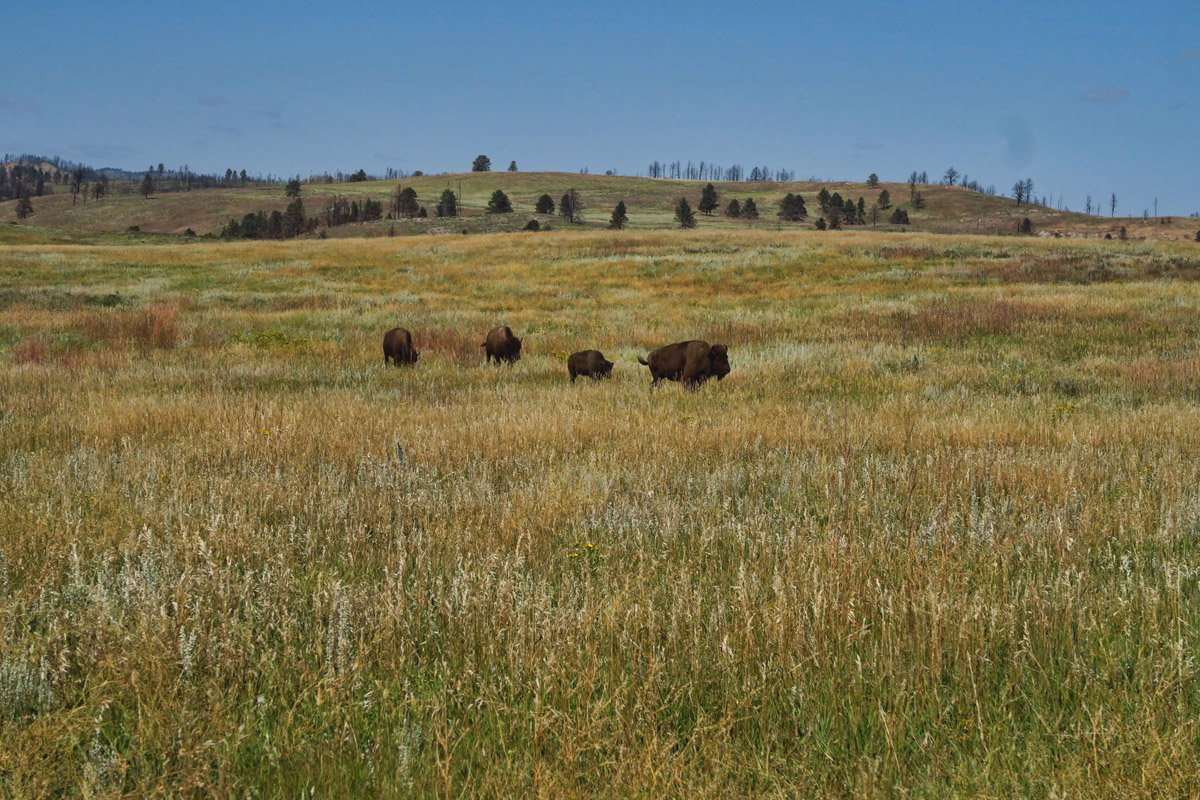 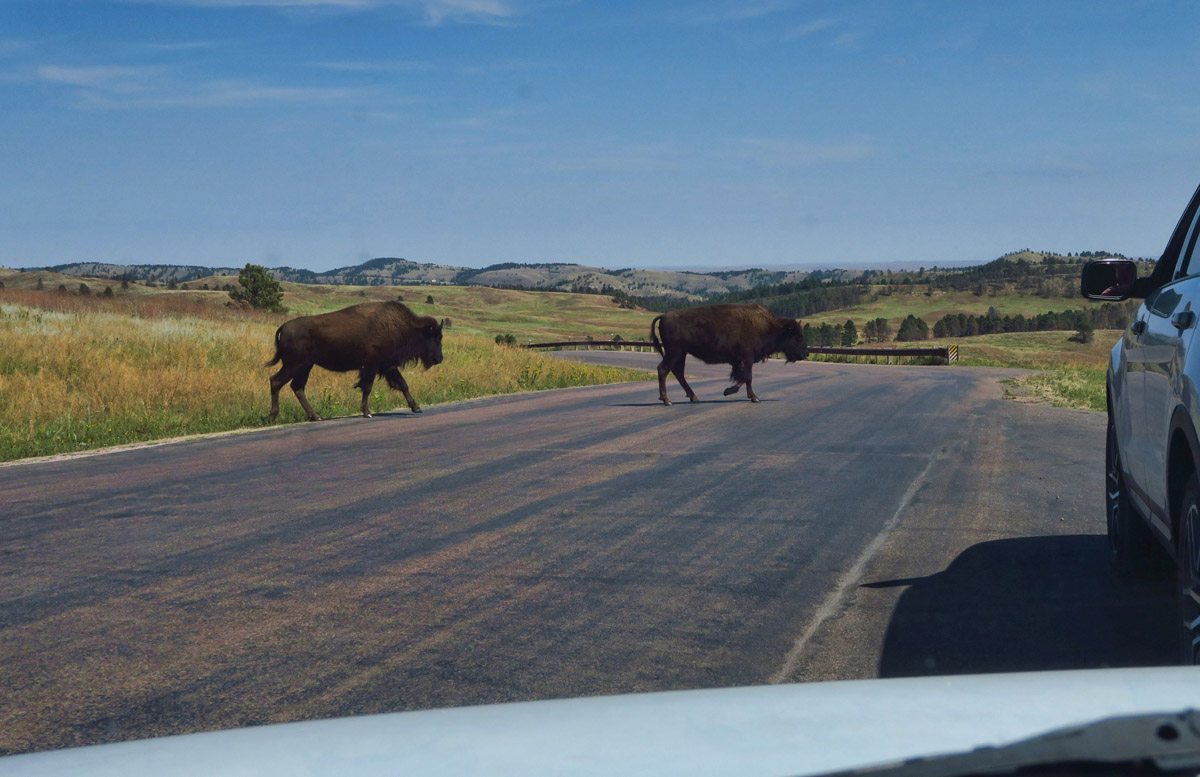 I sit patiently while waiting for them to cross the road so I can have “that photo” through the Tracker windshield.

Five miles further down the road, I get a glimpse of a river of brown movement out my passenger side window. I stop to make sure I am really seeing what I think I am seeing. It’s a bison parade, marching single file down from the hills. I pull over to watch, and they keep coming ever closer…as I sit nervously in a stand-off behind the wheel of my tiny Tracker. A full grown bison bull stands 6 ft at the shoulder and can weigh up to 2,000 lbs. Bison can also sprint up to 40 mph. So I am no match for one, let alone a stampede! 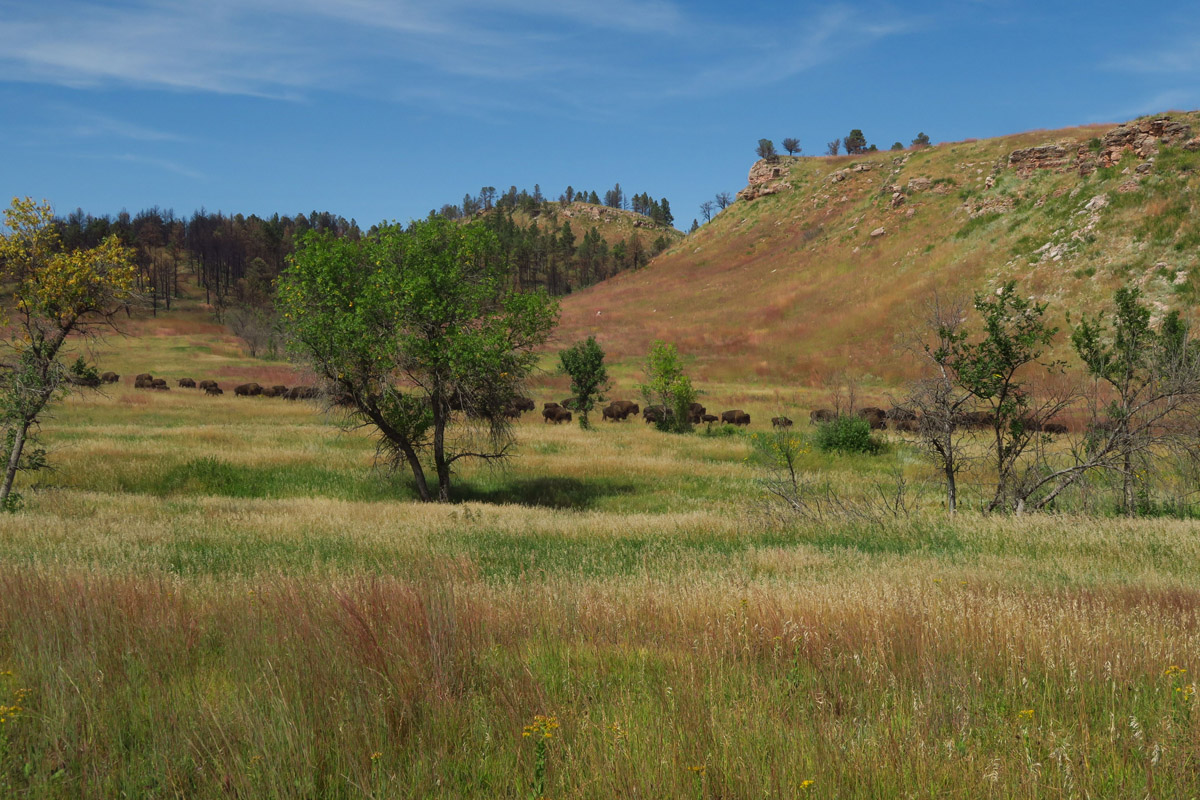 First I spot the movement out my passenger side window. 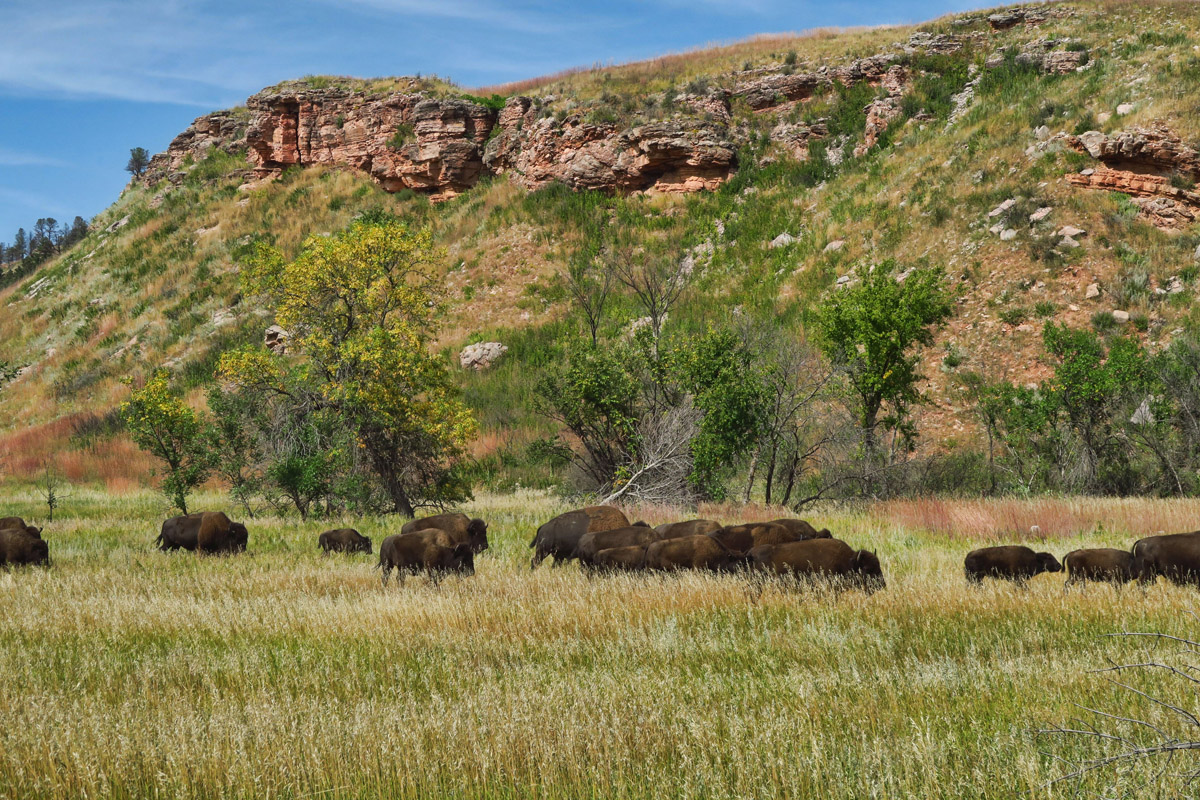 Then the conga line begins to come a little closer. 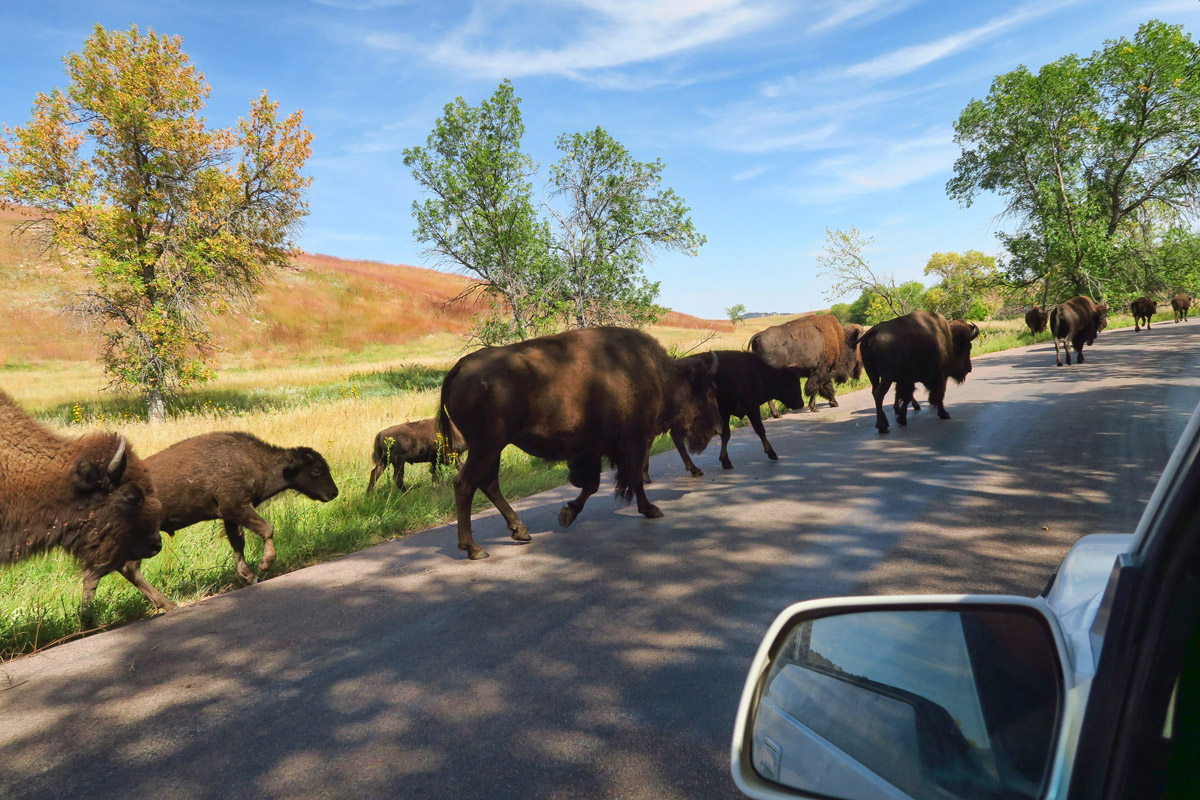 The herd size within the park is around 1,400. I wish I knew how many were in this group, as I sat here for at least half an hour just watching them cross the road. 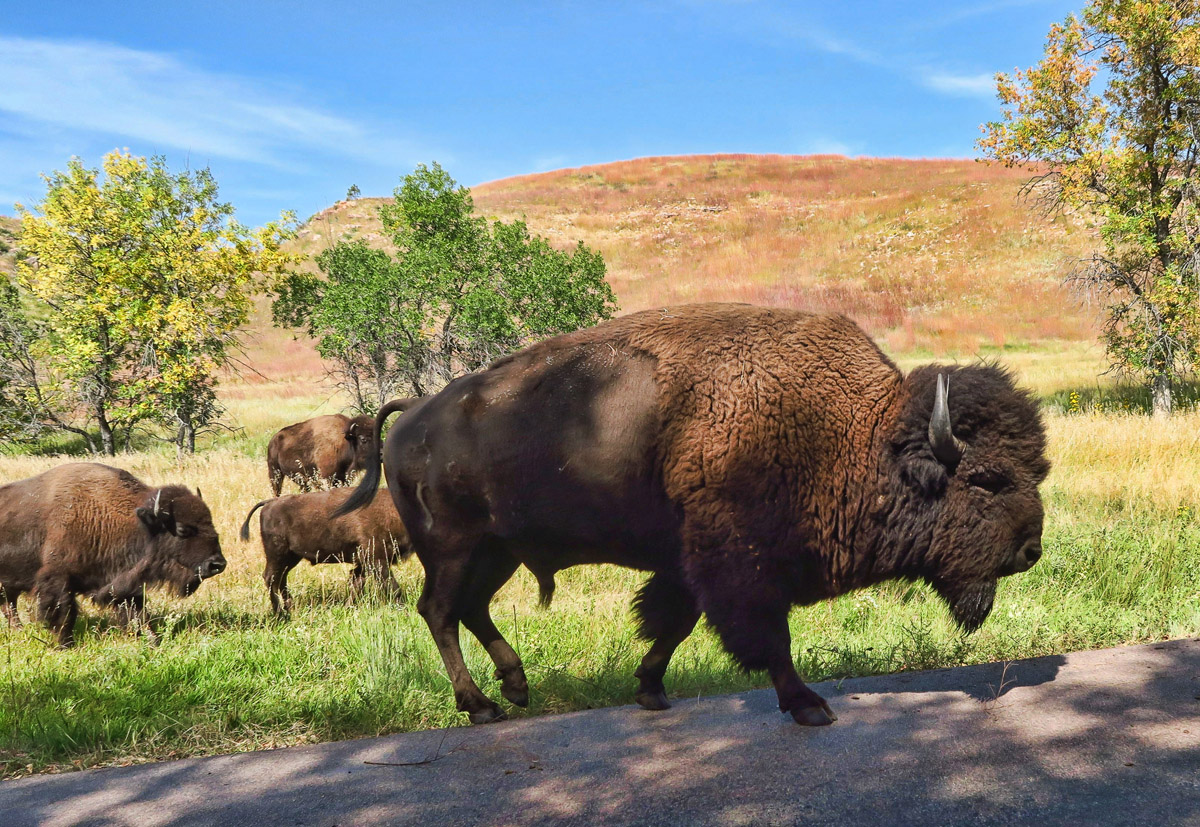 He outweighs me and the Tracker combined! 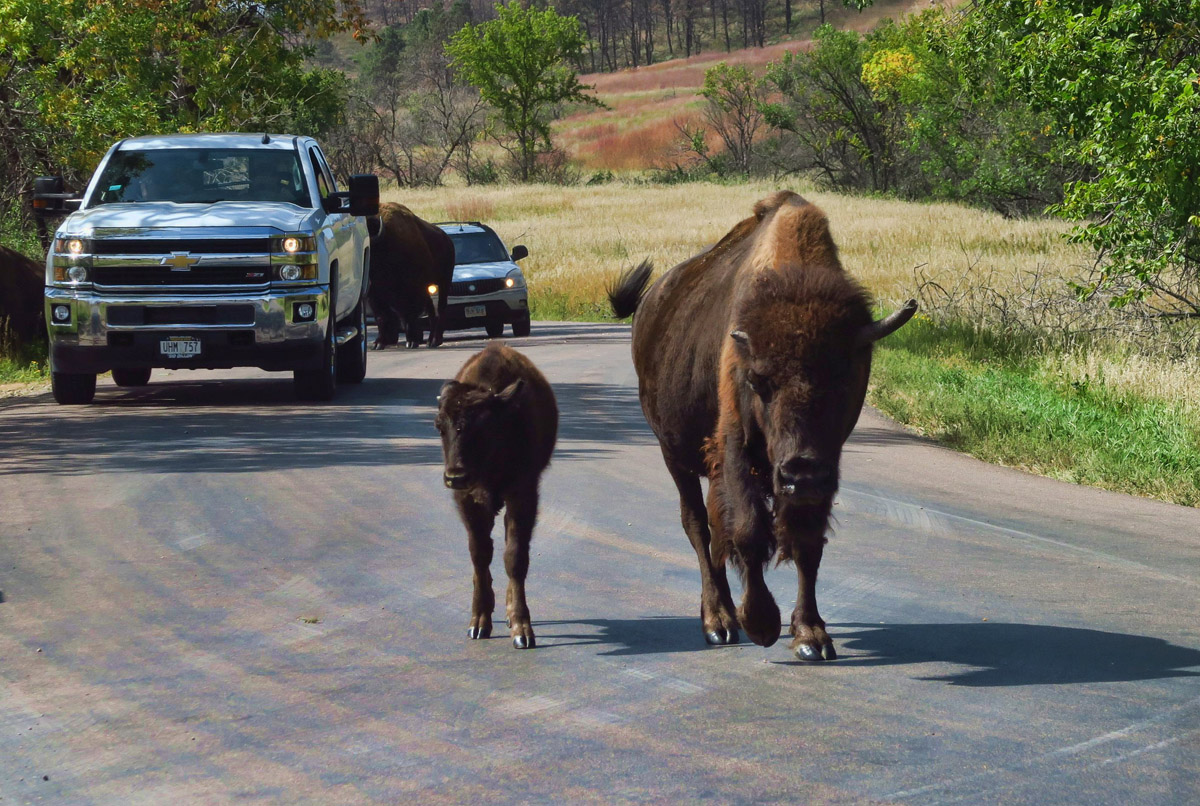 Though they don’t seem to fear cars, they do seem easily frightened. 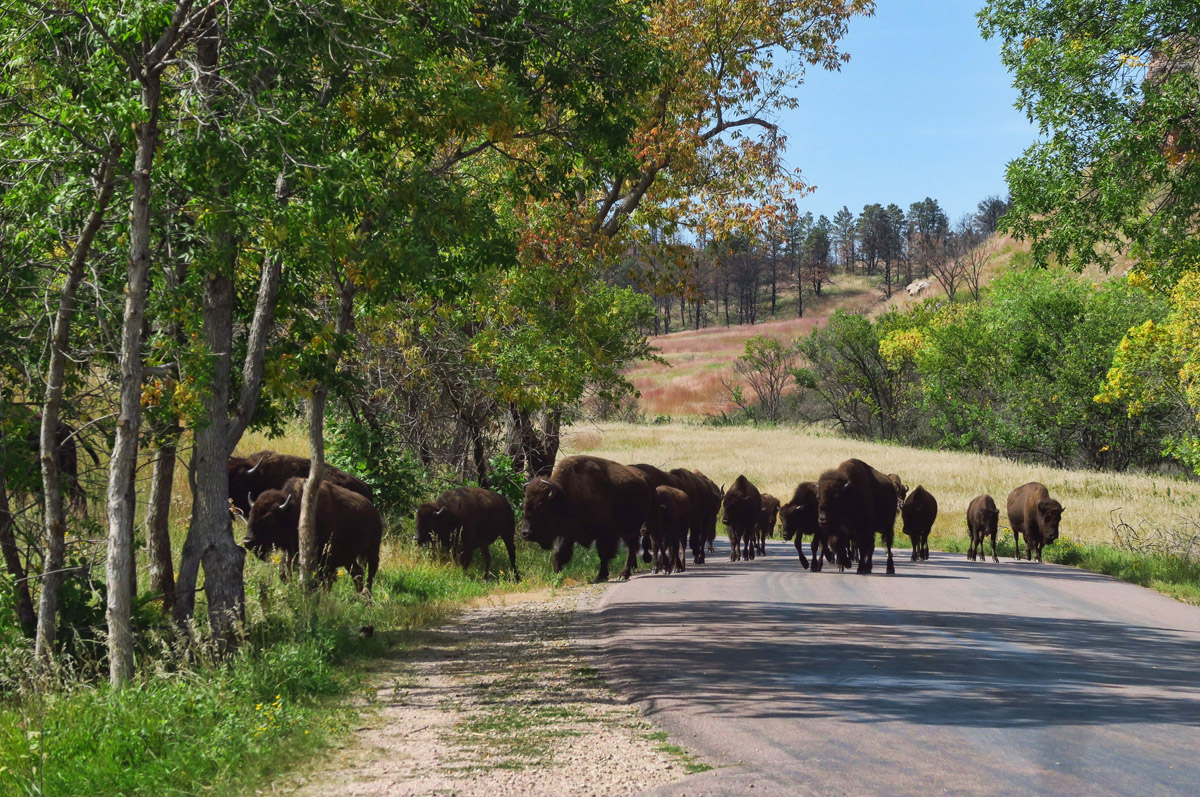 I later learn from speaking with a Park Ranger that this is a precursor to the upcoming Round-up weekend. 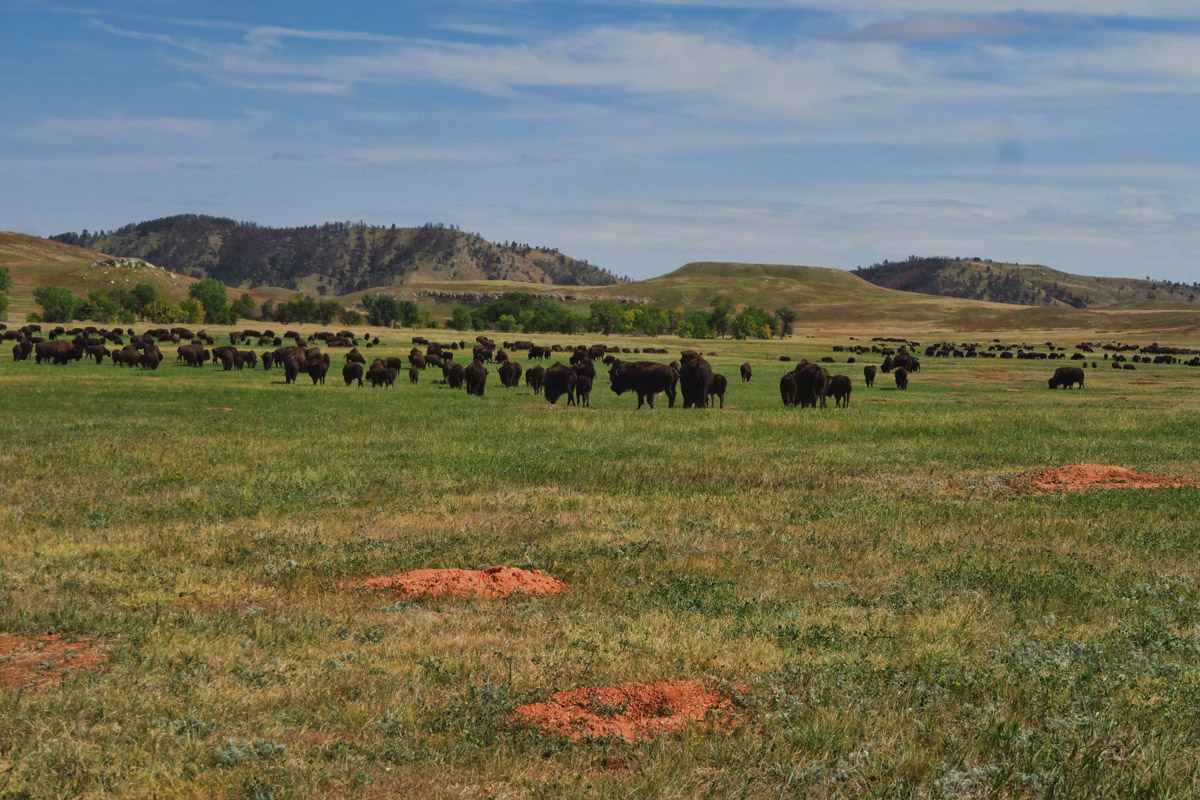 There are 4X4 trucks behind the herd, trying to move them all into the southeastern part of the park so it will be easier on round-up day. 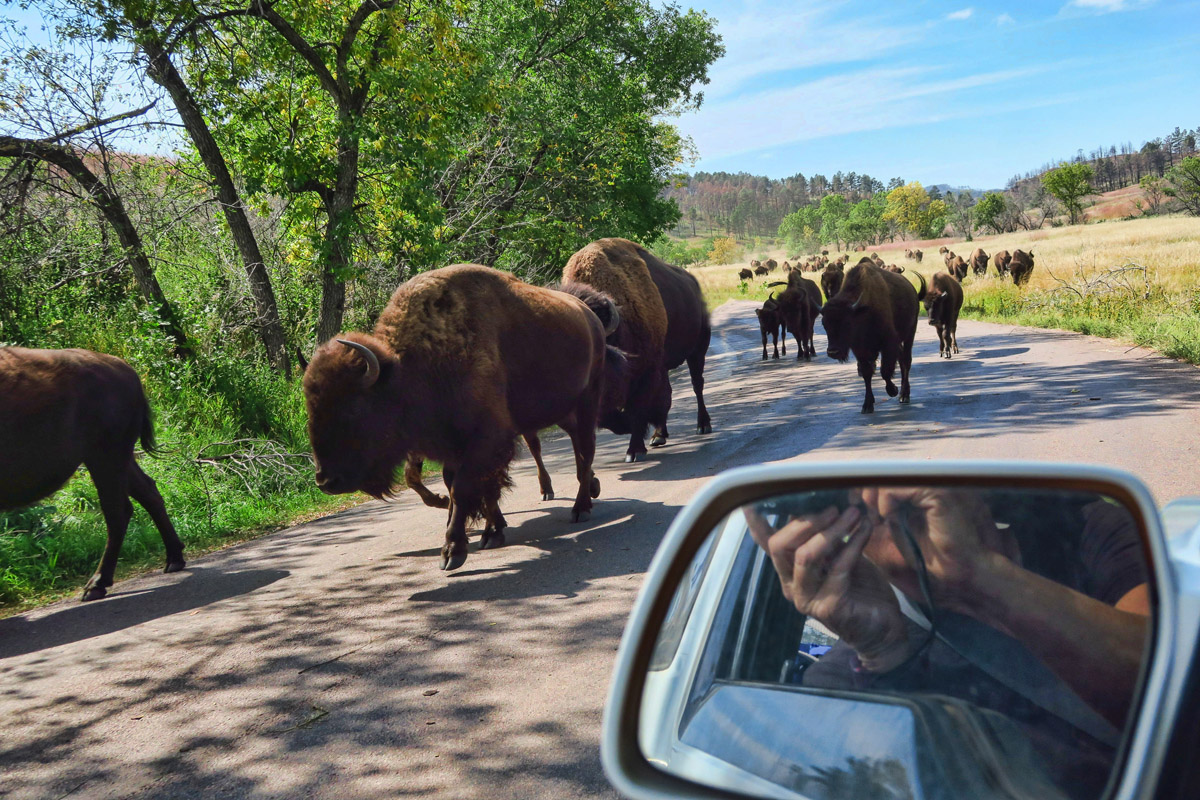 Each bison is branded with the year of its birth. 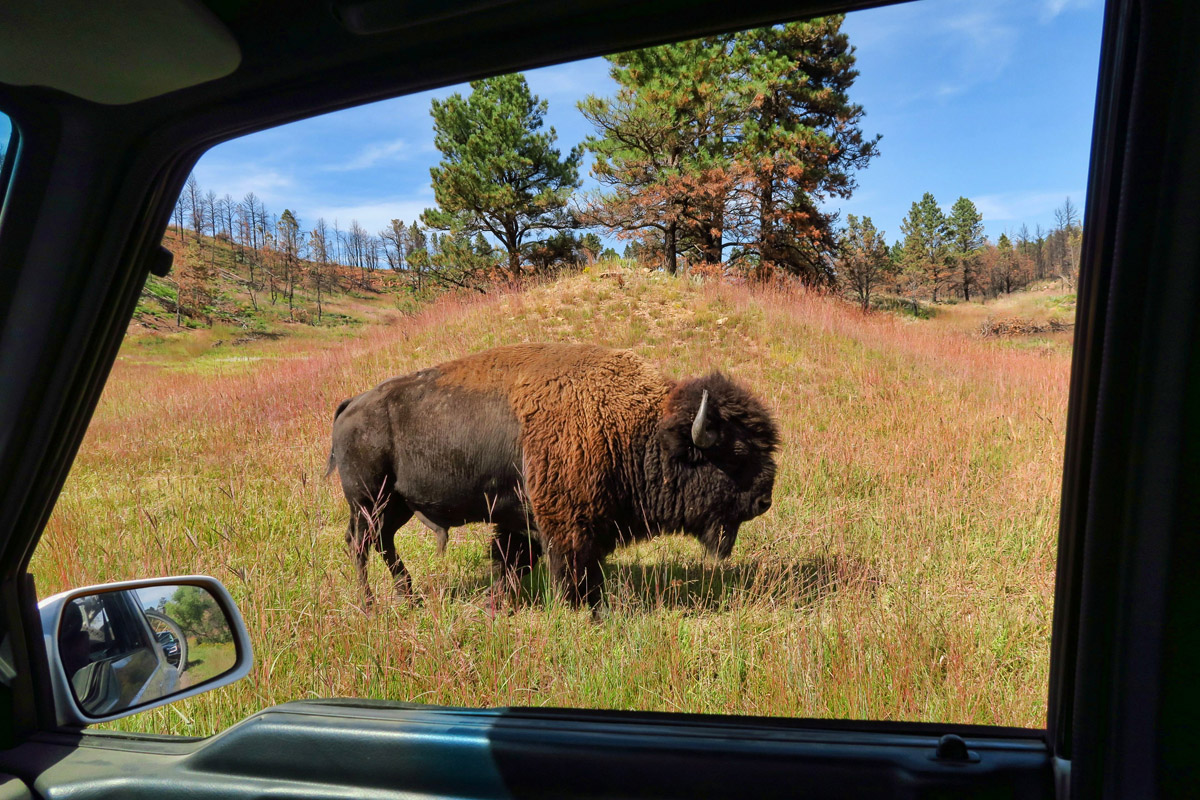 Though the bulls are moving with the herd, they will not be part of the round-up activities because they are too aggressive.

If you would like to experience my own version of the Custer State Park bison round-up in motion, here is a short video I shot, followed by an even shorter one of a bull growling and wagging his tongue as he swaggered by.

(NOTE: Please forgive the “expletives not deleted” in the video. The adrenalin while sitting low in the Tracker seat when those hooves started thundering toward me made me do it!)

Finally, to complete the loop, I drive the remaining 14 miles along the Needles Highway back past Mt Rushmore to Keystone, where the Winnie is dry camped at the Travelodge. Any one of the three sections would have been a treat, but to combine all three made for a gorgeous drive on a quintessential fall day! 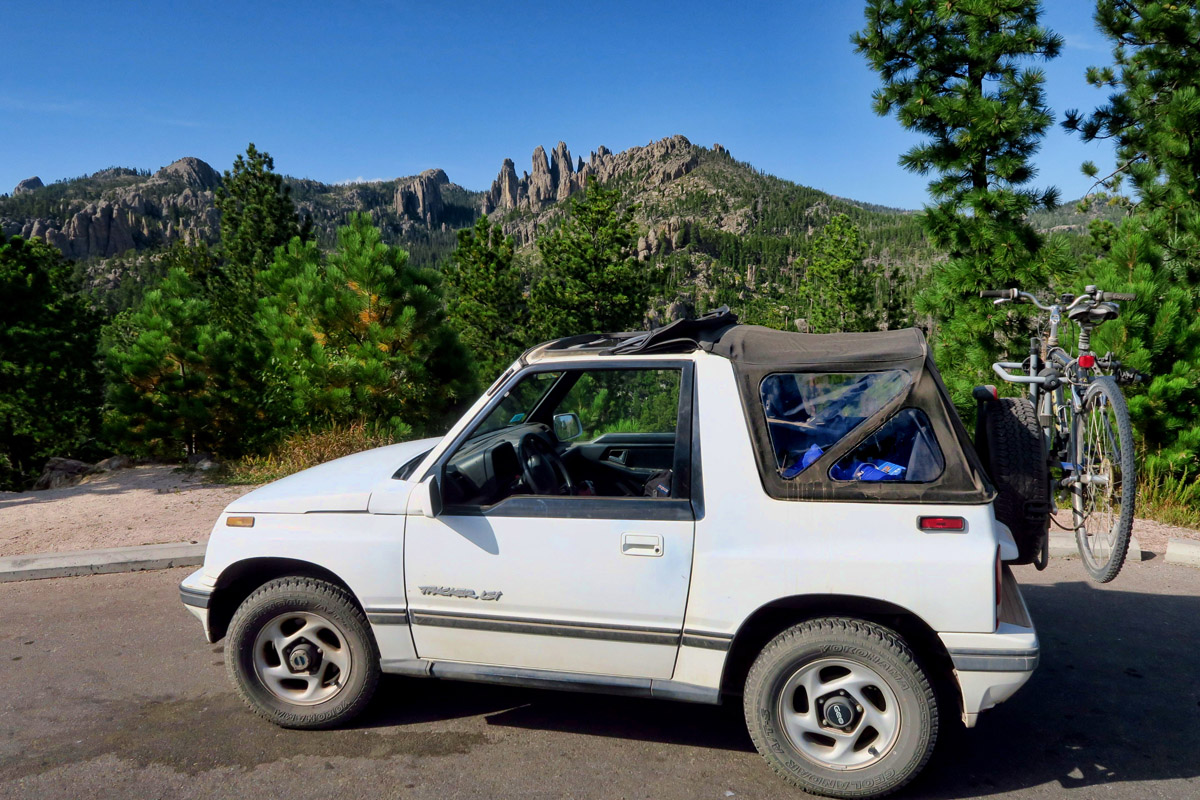 The 24 year old Tracker completes the loop like a champ. 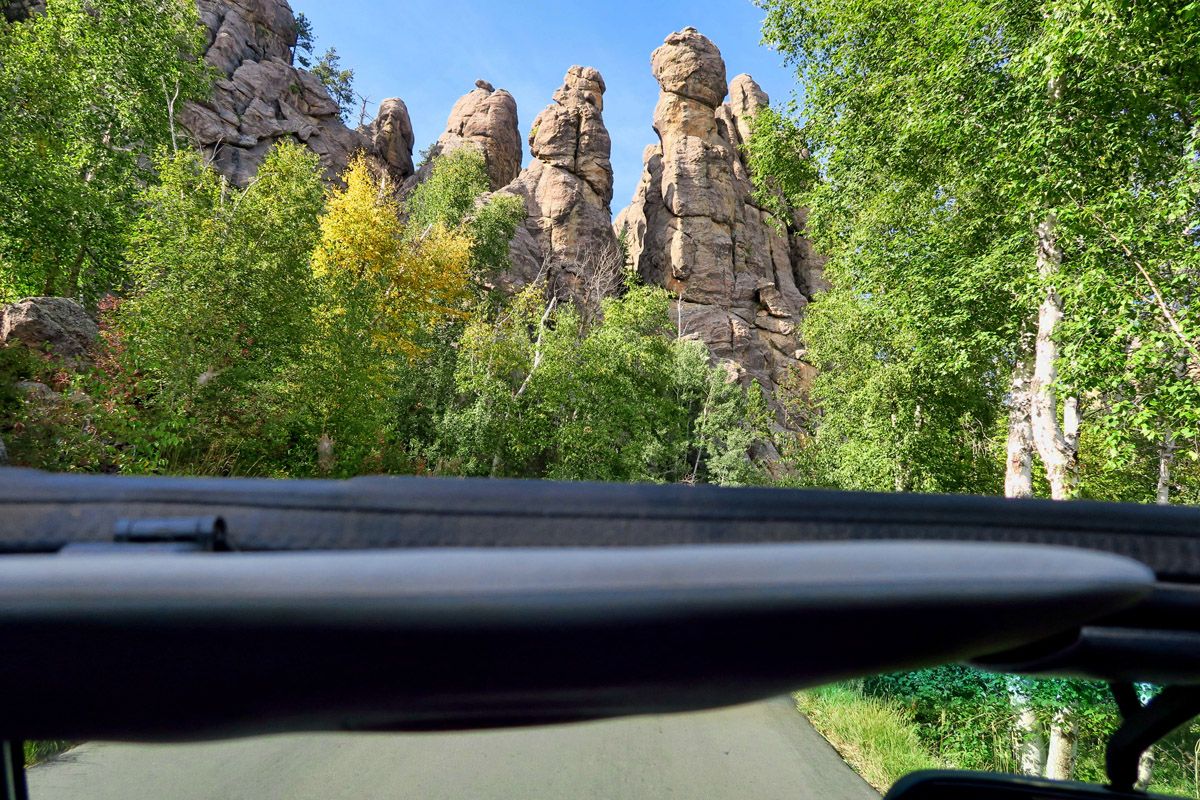 I don’t take advantage of dropping the top often enough, but I appreciate having it in places with overhead views like this. 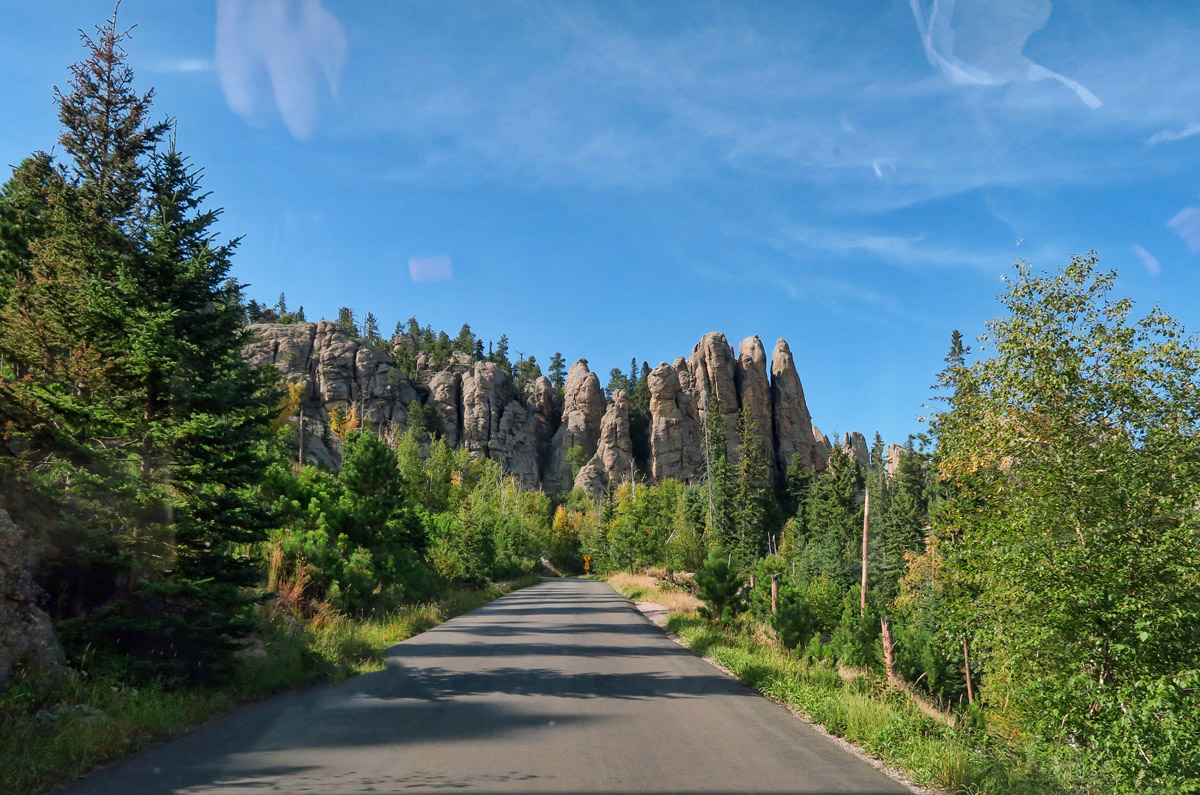 The Needles Highway is named for the dramatic granite spires along the highway. 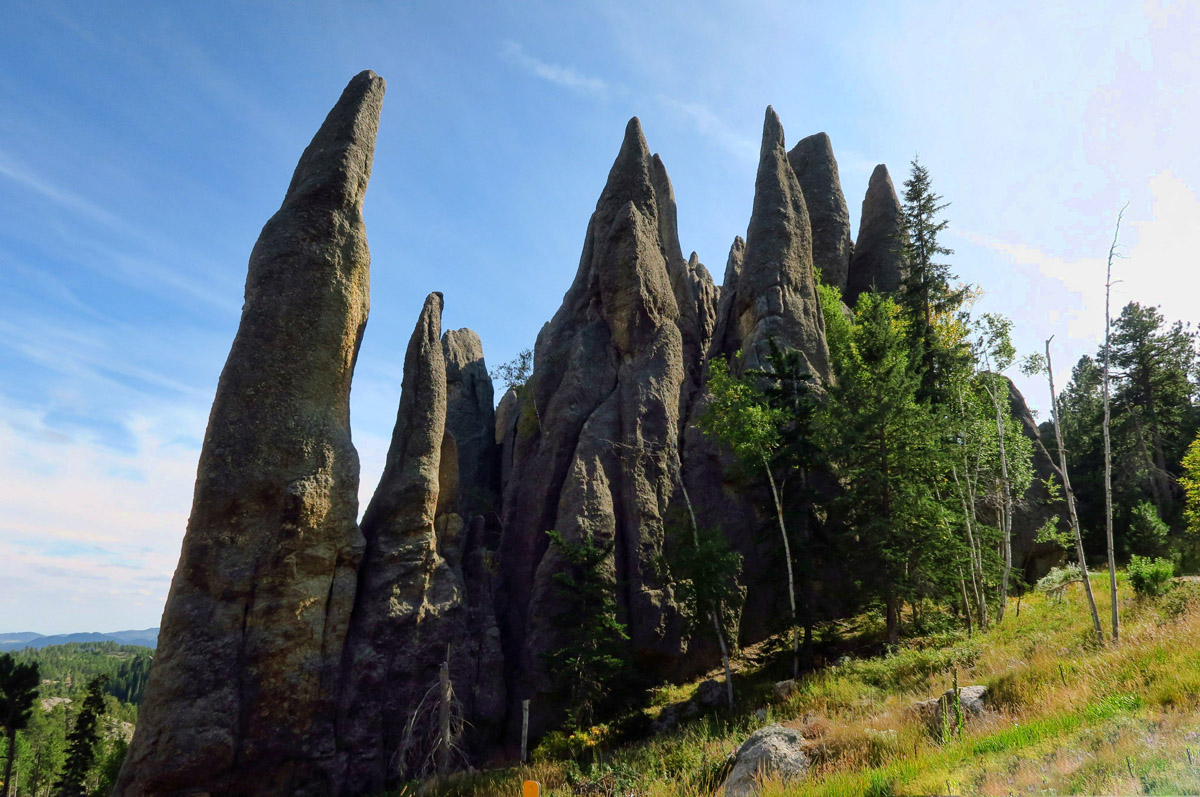 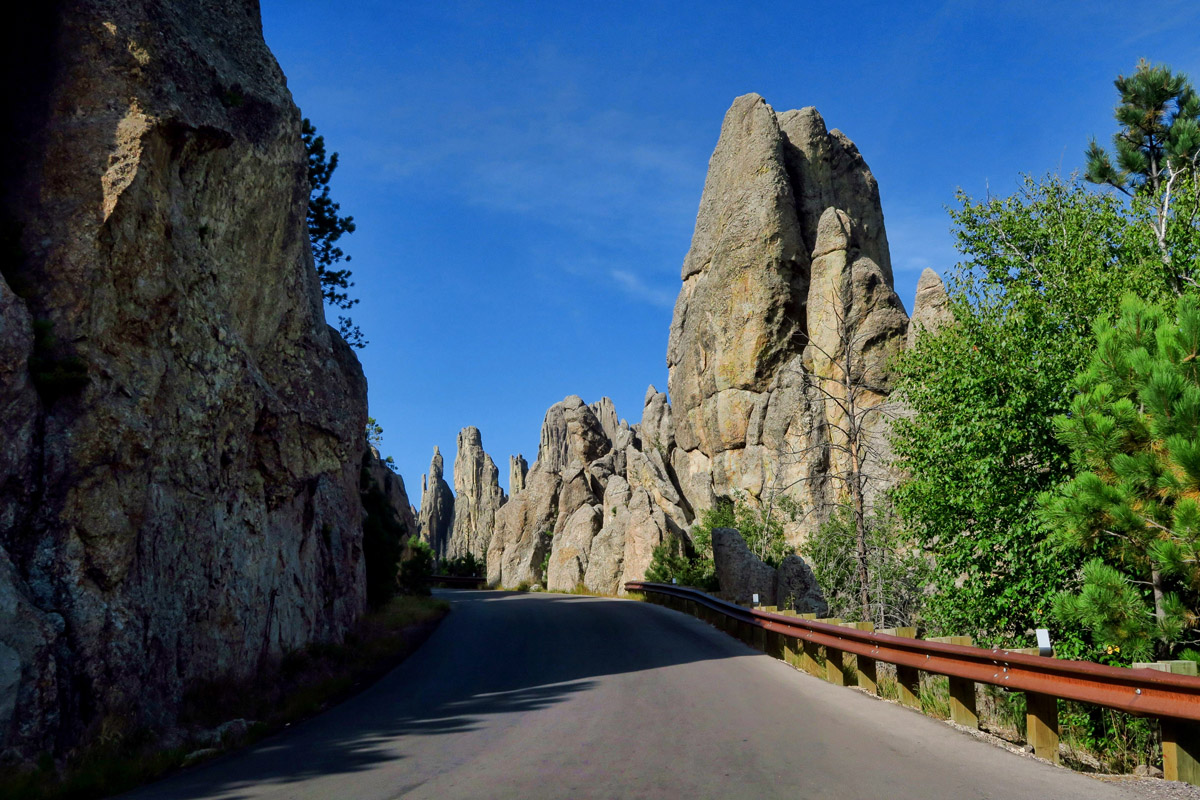 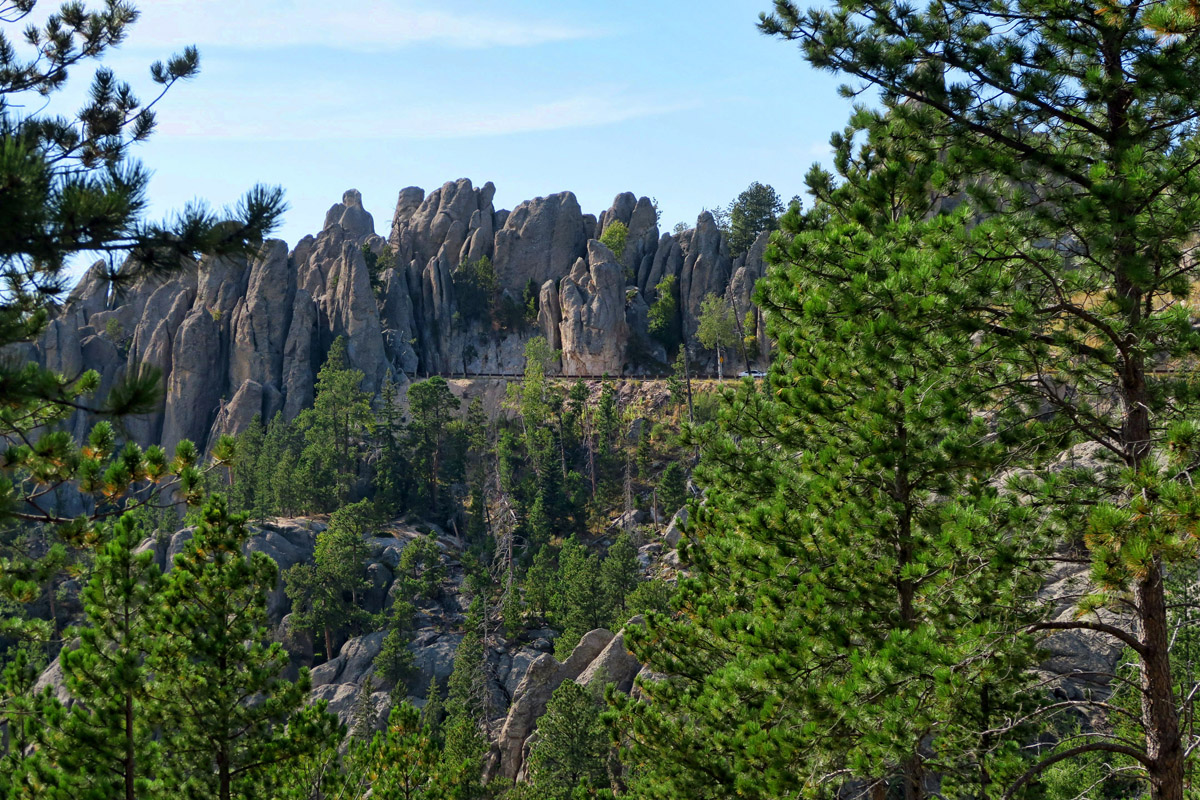 The horizontal line in the distance is the roadway at which point it enters the tunnel. 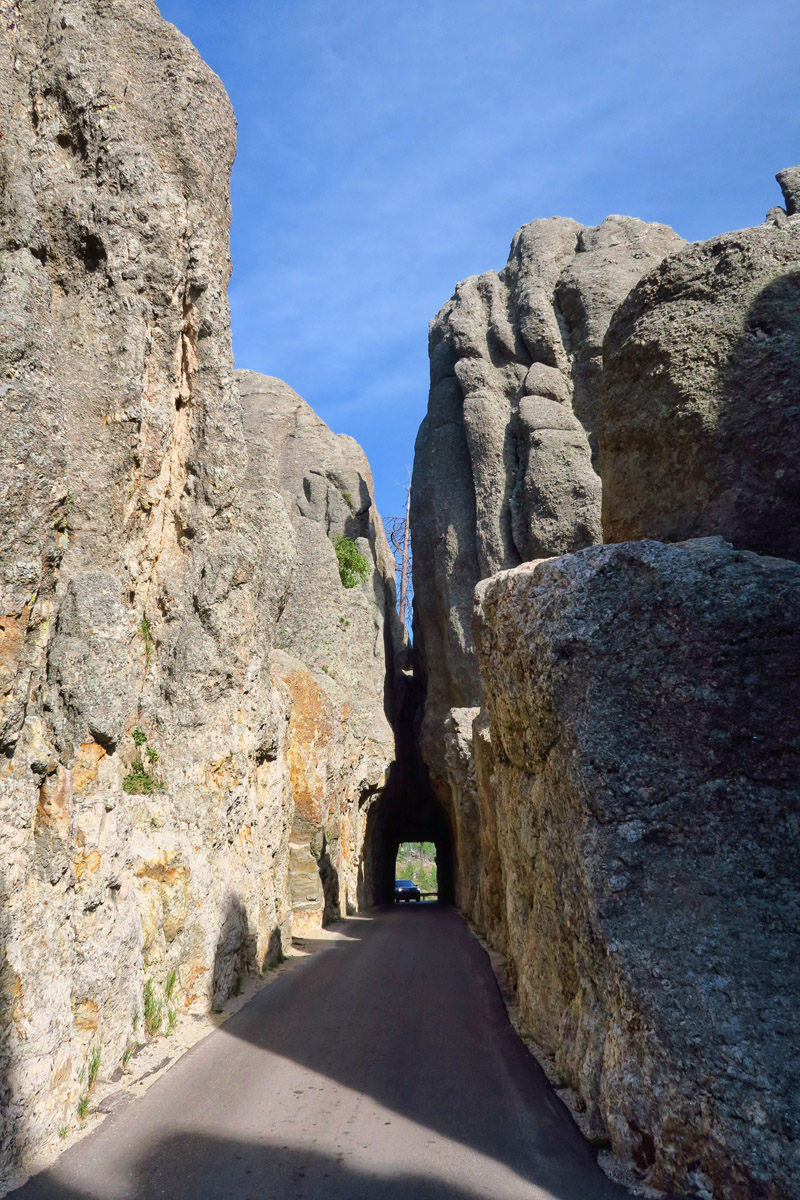 This tunnel is 8′ 4″ wide, and 12′ high. Tour buses manage to go through it, and I have seen photos of a Winnie View in there…but not for my faint heart! 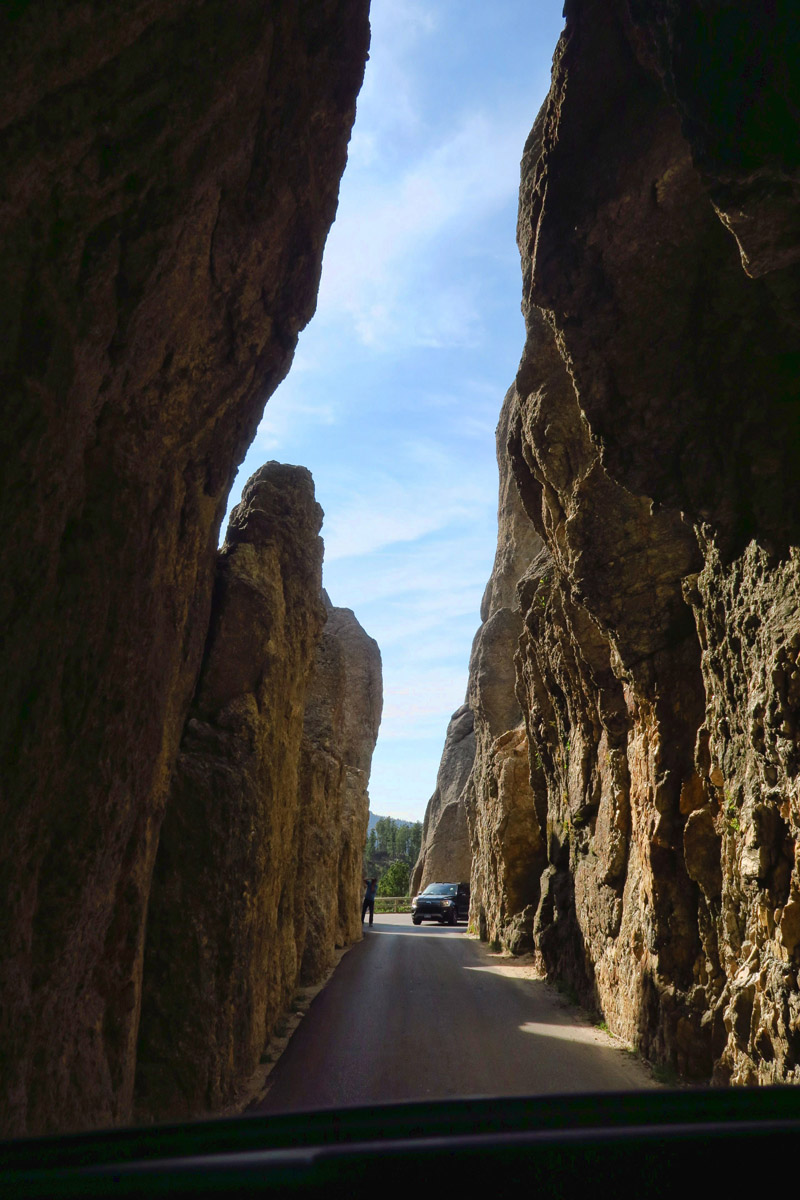 Exiting the obviously one way tunnel with another car waiting his turn. 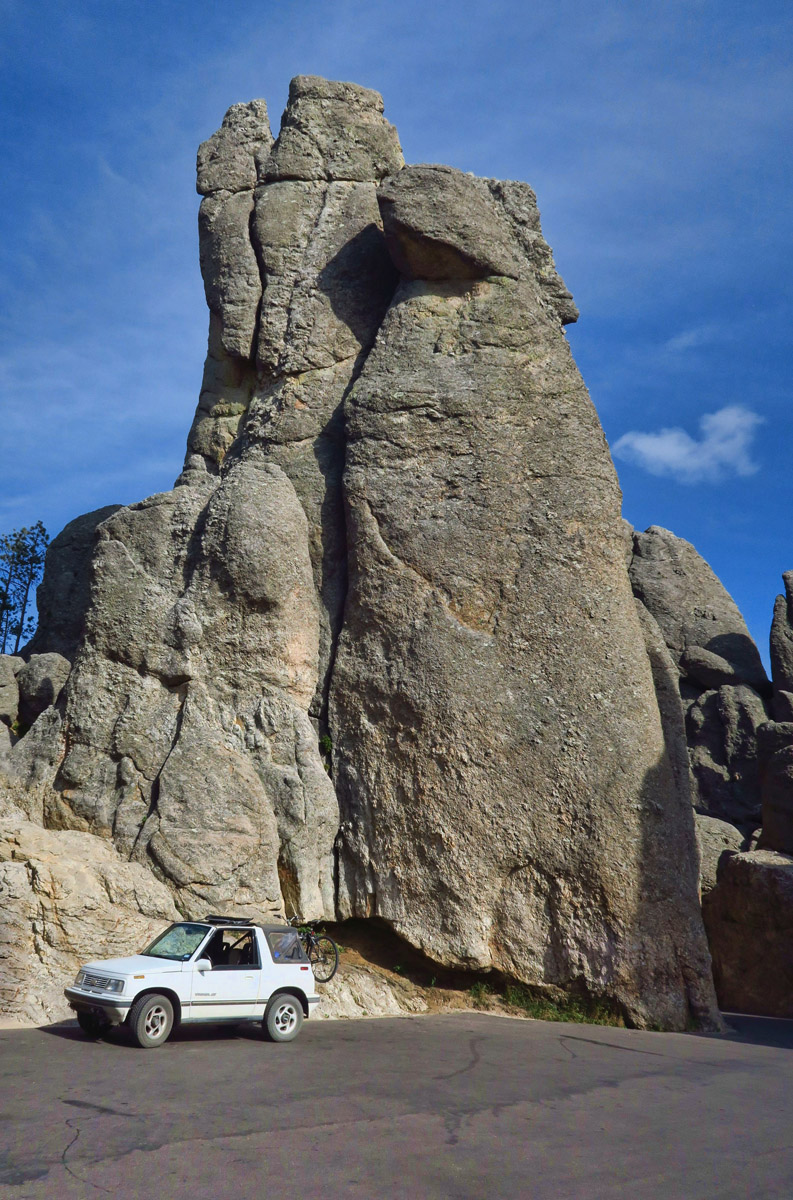 I read that Senator Norbeck mapped out the roadway on horseback. It was completed in 1922. 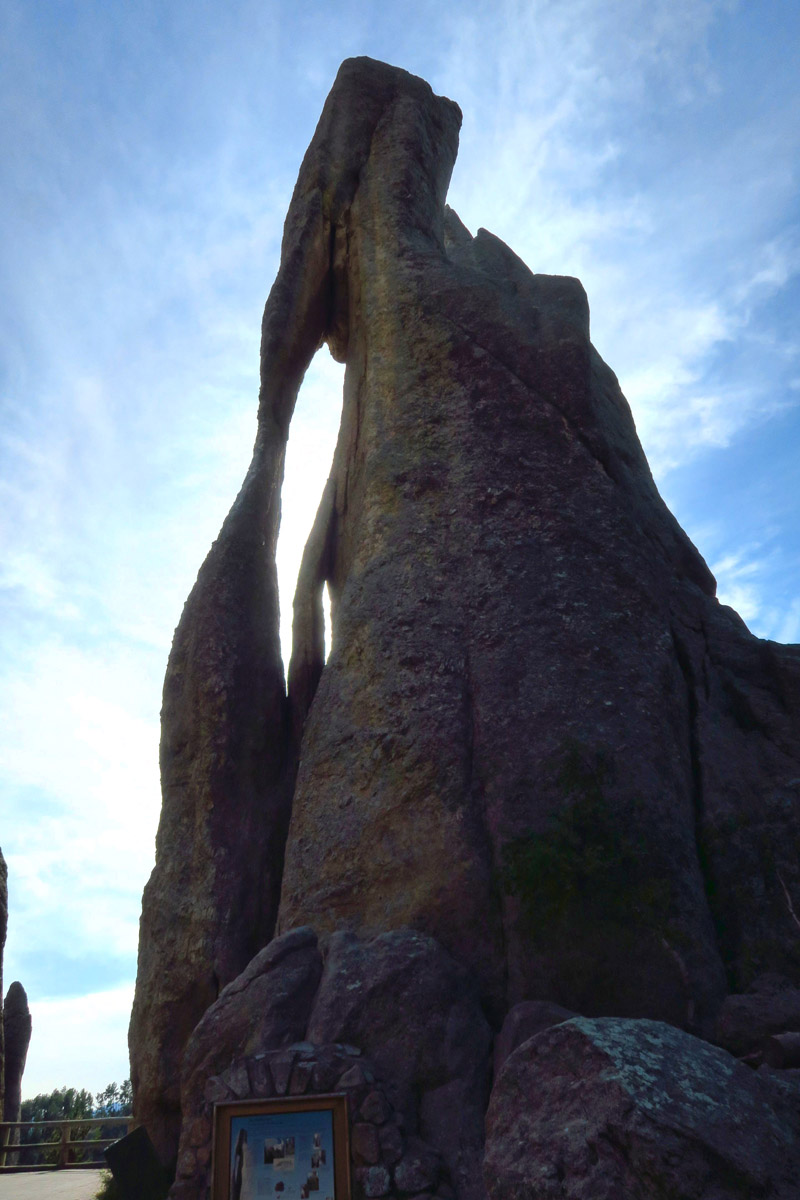 Eye of the Needle

20 thoughts on “The Tracker is a Regular Bison Wrangler!”