I confess to having a bit of a fascination about riding a motorcycle, a sport which seems to ride right along that fine line between the idea of an exhilarating thrill ride with the wind in my hair and sun on my cheeks, to the reality of fear of potential defacing and dismemberment of my body parts. But those tenuous skinny green branches of the tree of life are where the luscious fruit hangs. If you don’t push yourself out there on the edge of the comfort zone, there is little reward for an adventure-seeker who clings to the sturdy, solid trunk.

My first experience on a motorcycle, or rather a “motor scooter” was on the back of a 1958 Cushman Eagle, arms clutched around my Dad’s waist while breezing down the Farm-to-Market roads in rural Texas. Although Dad bought the scooter for my brother Don, like the horse he bought for me, I suspect there was an element of his own desire in the purchase. He took me for joy rides all over the countryside.

Eventually, Don’s interest turned toward four wheeled vehicles, and I was able to steal the Cushman away for a few joy rides of my own.  I would ride down the Farm-to-Market road to my best friend Susan’s house, as long as her dad, Walter, was home to help me with the kick starter. I was much less afraid of the Cushman than I was the horse! 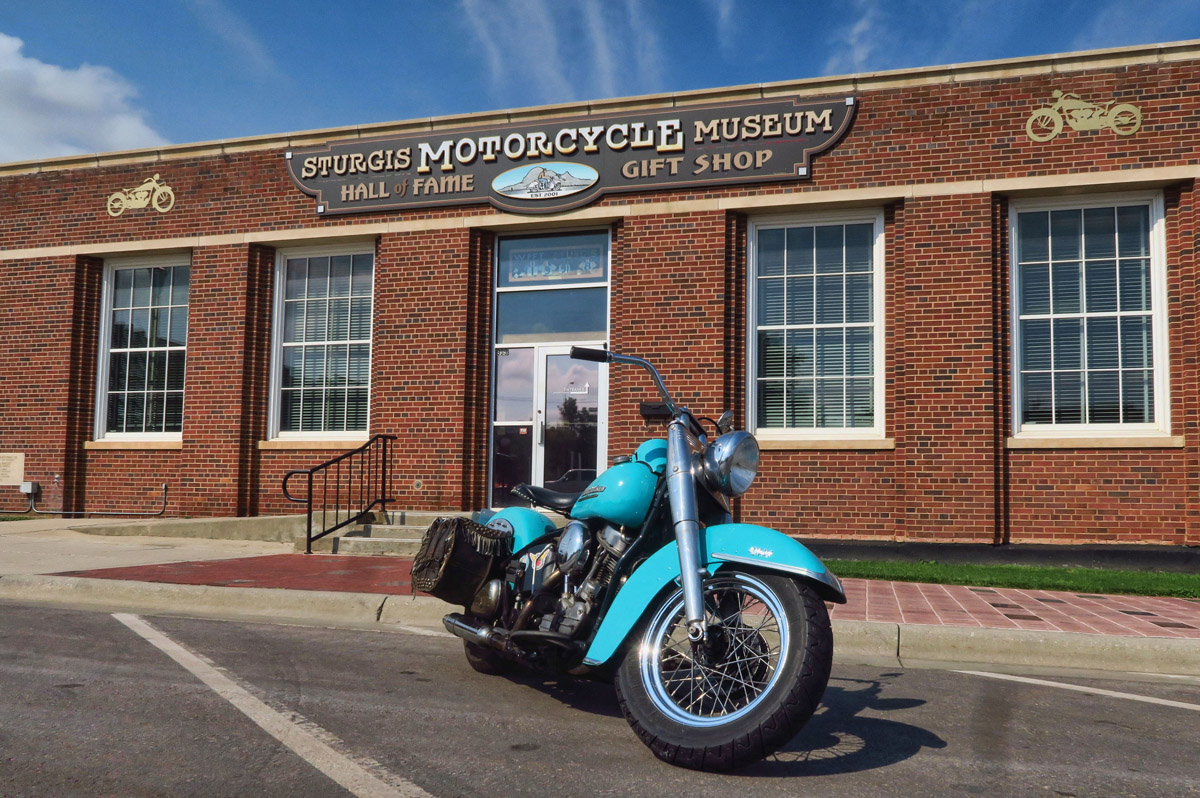 In my mind, this is what the Cushman scooter looked like, though likely much more benign. The color was the same, tho… 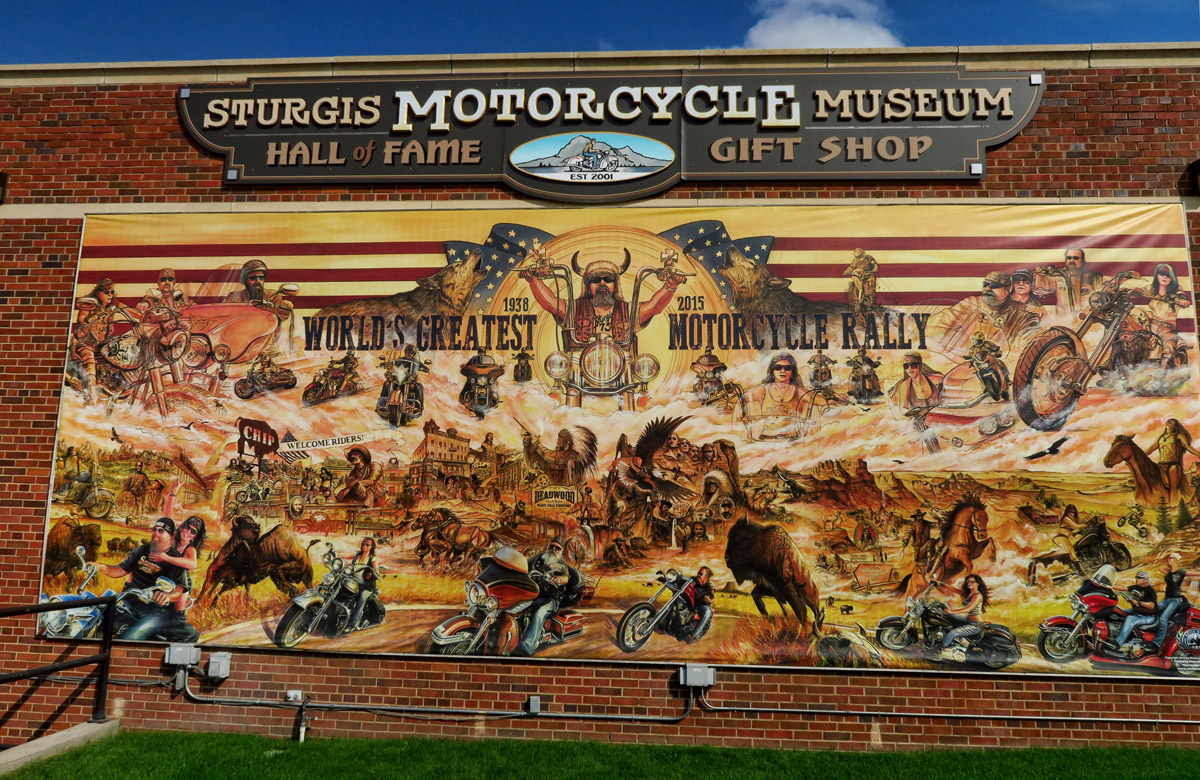 I often fantasize about traveling by motorcycle, particularly as a means to travel long distances, immersing myself deeper into local culture on the back roads, more so than one can often do while insulated by a car. This intrigue is no doubt heightened by the book I am currently reading, Lone Rider: The First British Woman to Motorcycle Around the World by Elspeth Beard. I attended a seminar given by the author when I was volunteering for Overland Expo last May.  I was riveted hearing her speak about the challenges she faced as a 23 year old female rider back in 1982, heading out on a solo journey around the world. Now that was brave! 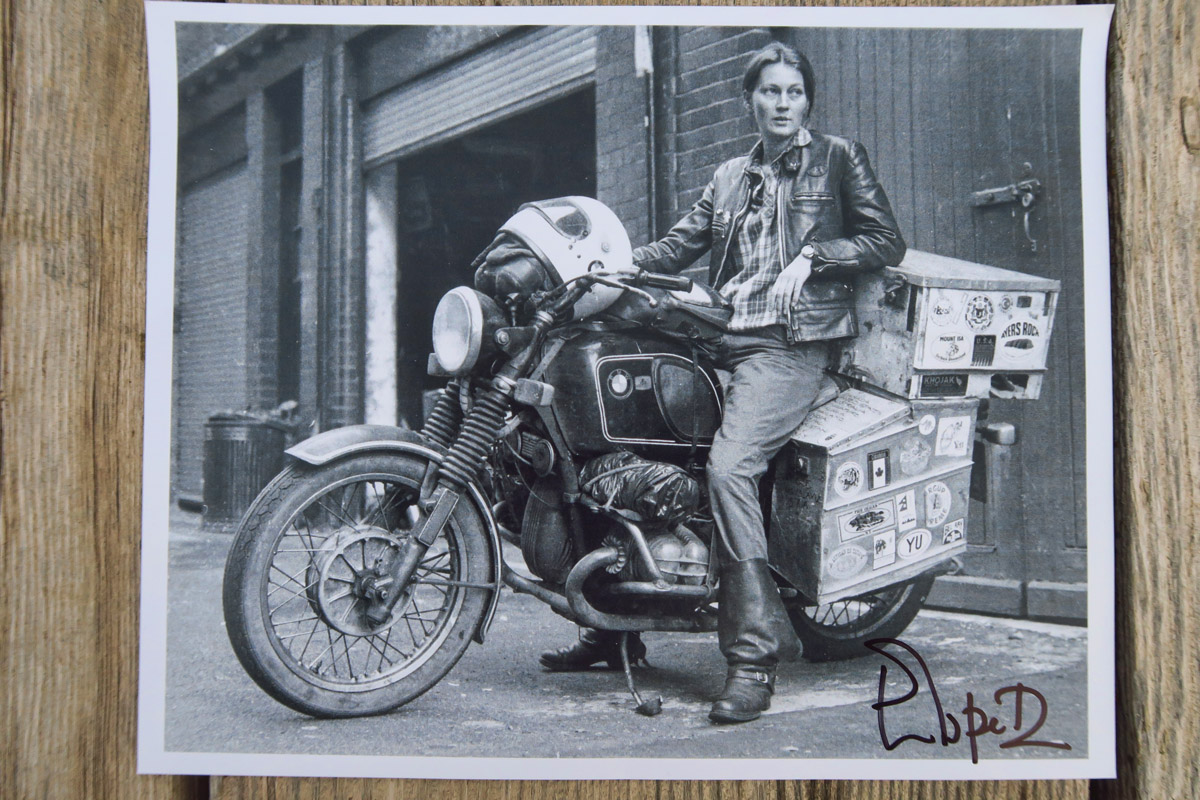 So no way am I going to pass through Sturgis, South Dakota, home of the largest motorcycle rally in the world, without at least a stop to have a look around. Having amassed over 500,000 motorcyclists in a town of less than 7,000 during 10 days in August, the rally is now long over. Perfect time to satisfy my curiosity when I can creep down Main Street like a groupie without feeling the intimidation of roaring pipes on my bumper. 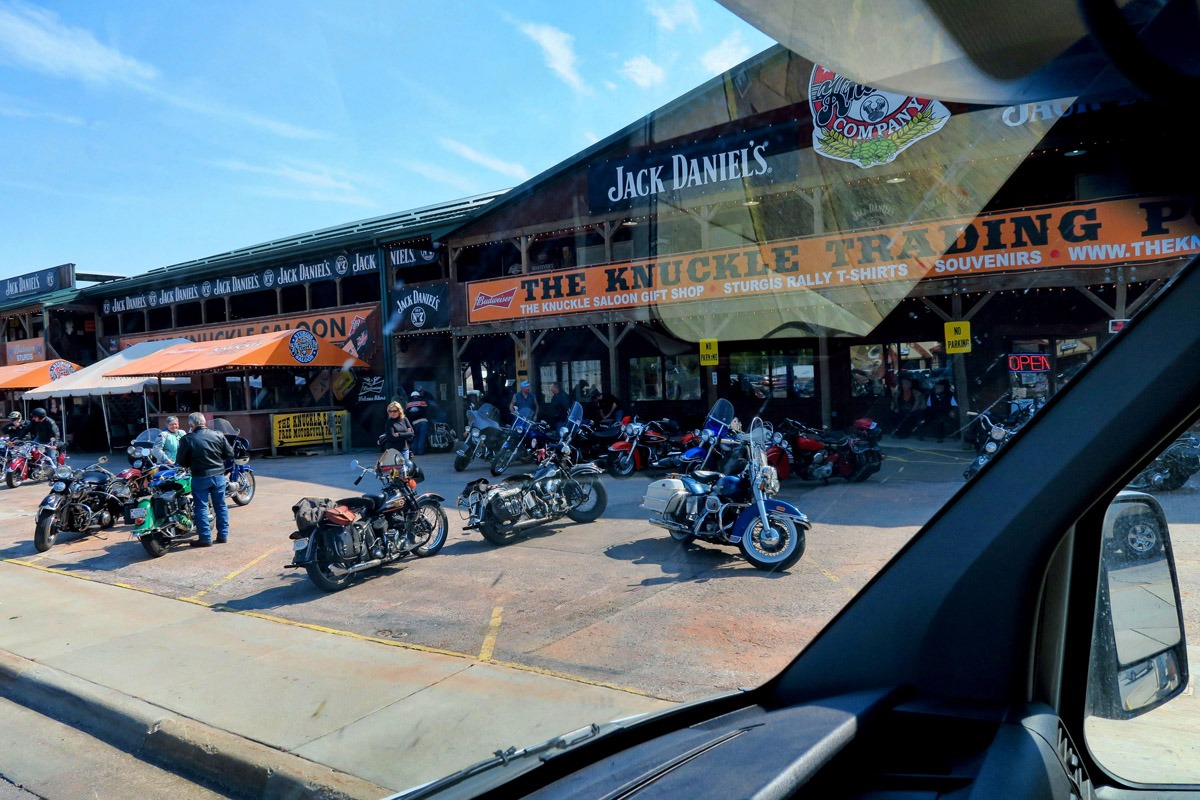 Cruising by the Knuckle Saloon. 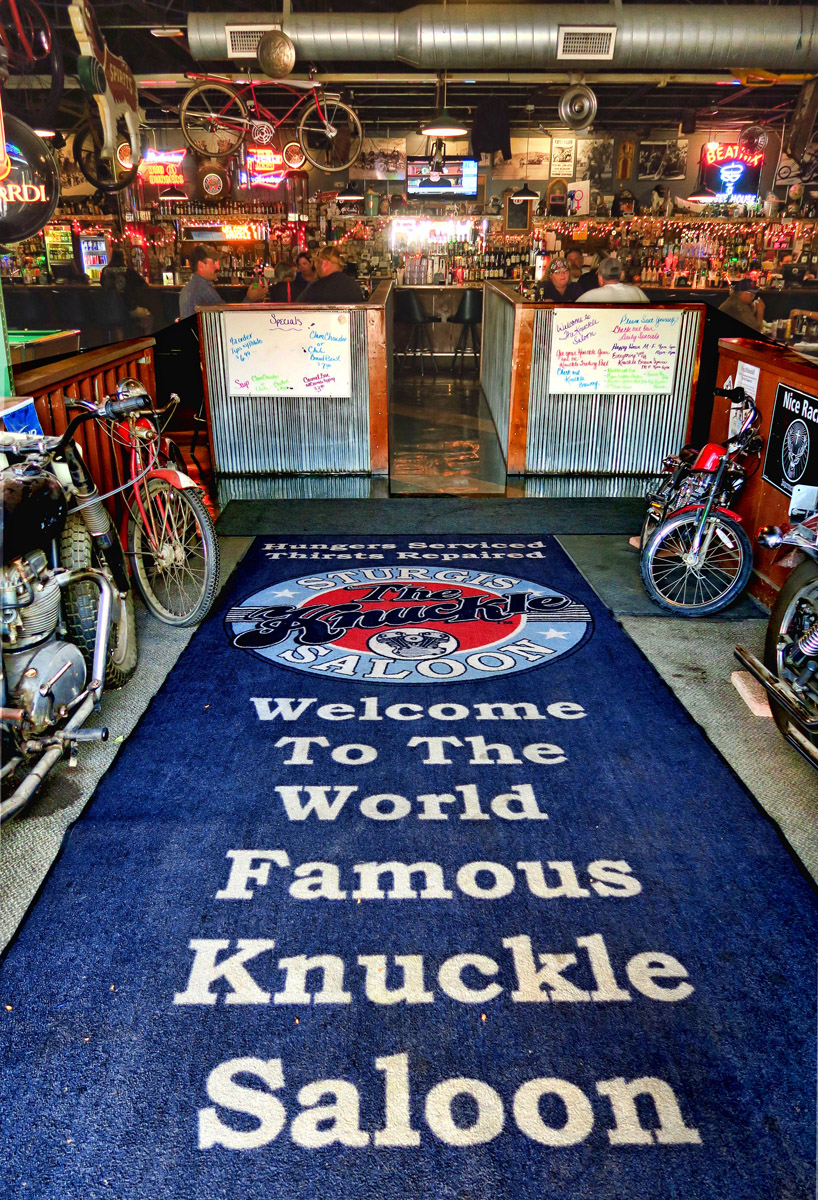 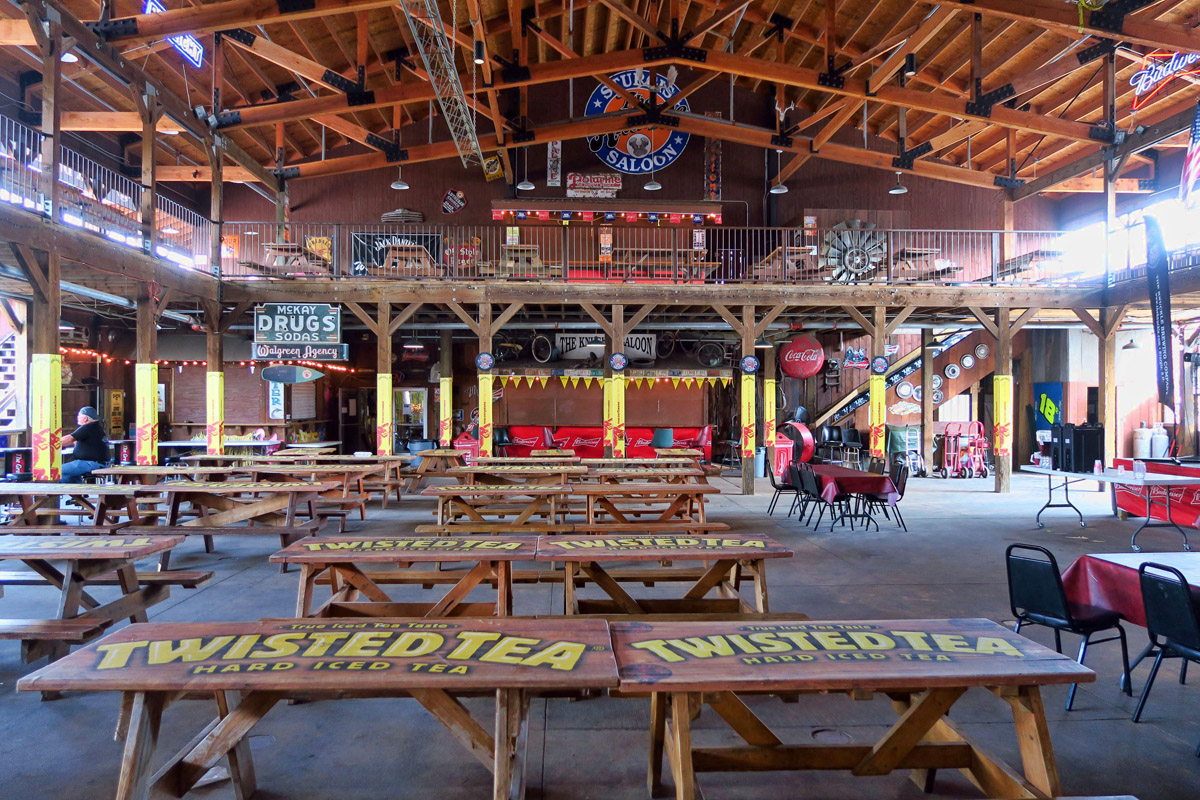 The bartender tells me this giant beer garden is packed during the rally.

I stop into the iconic Knuckle Saloon where the bartender tells me “Come rally week, the walls here literally pulsate.” Now, the massive structure only echos. Its easy to imagine the scene only a couple of months ago, tables filled with black leather-clad, bandana wearing riders, local brew in hand, comparing the cost of their latest chrome. There are a few stragglers in the saloon today, though most are here for the “Knucklehead Sandwich” off the menu, not the one that no doubt happens from too much libation in the Knuckle Brewery.

Would I like to see Sturgis in full swing? Maybe. But for now, I am content lurking from the fringes. 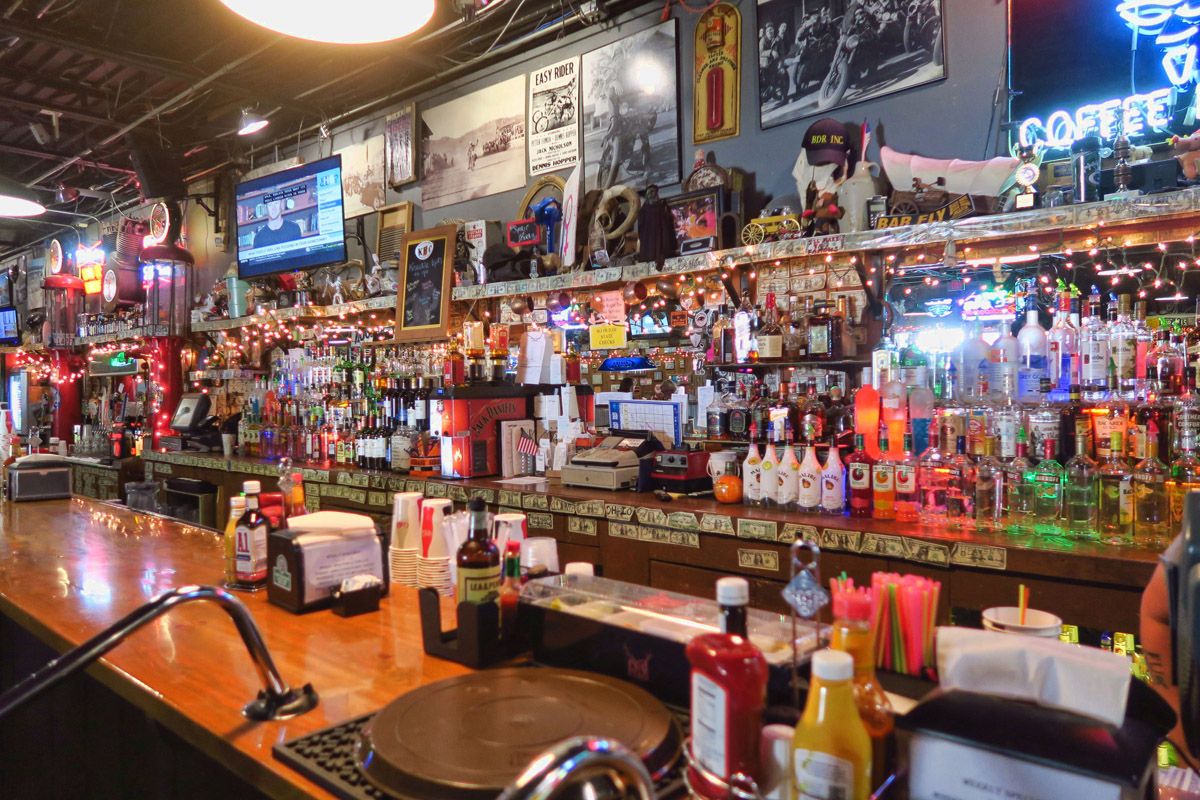 Scenes from the Knuckle Saloon… 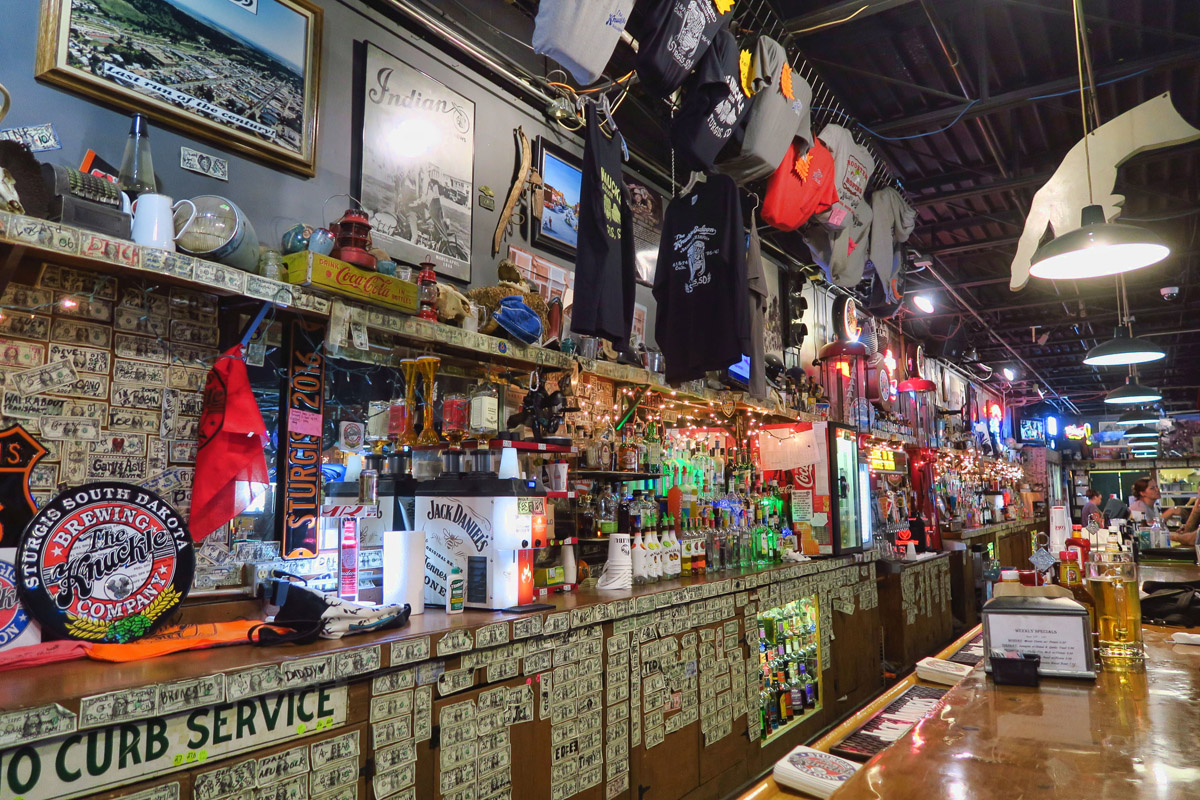 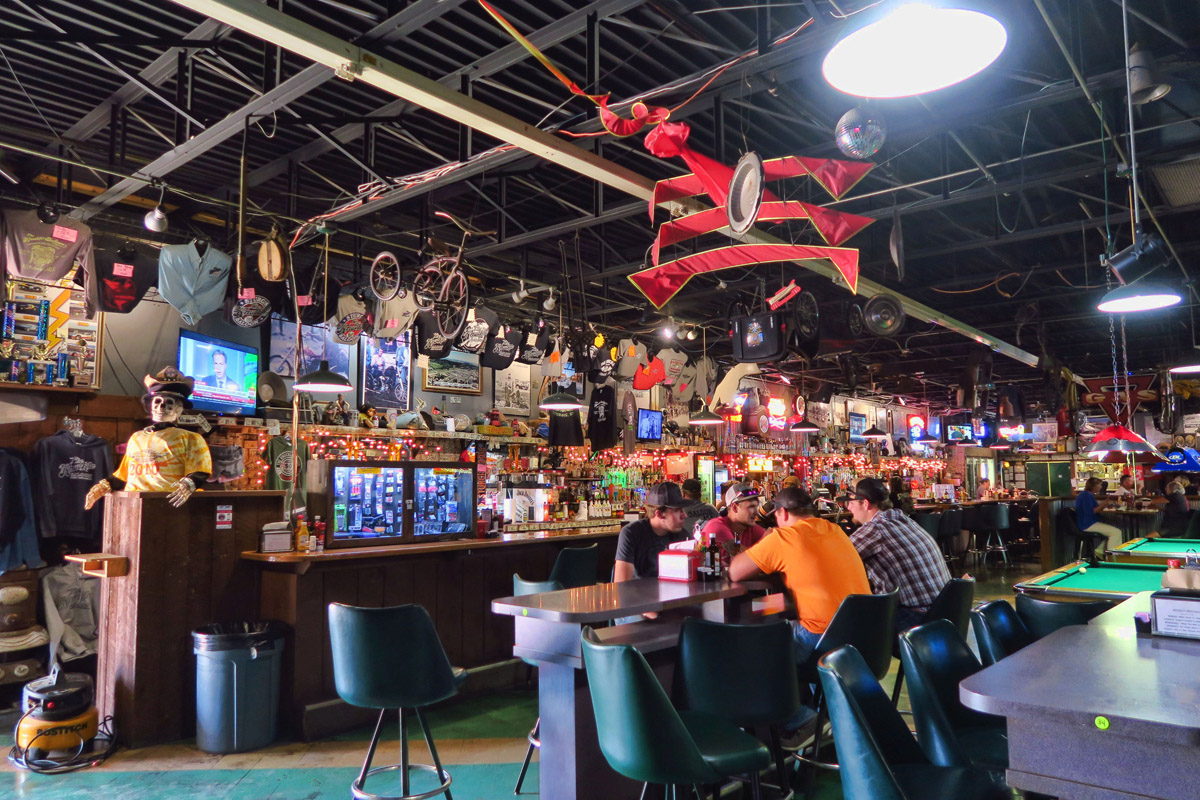 It’s interesting walking the hallowed Main Street, looking at all the left over Sturgis souvenirs and pondering how the empty shops manage to survive the other 11 months and two weeks out of the year.

In thinking about the 500,000 riders that descend on Sturgis every August, I wonder what percent of those actually take risks outside their comfort zone? Are they adventurers, or are they hobbyists? And if they are adventurers, then I look at the racks and racks of near full body armor for sale in the Harley Davidson store, and wonder how that can really feel that much more freeing than driving a car with the windows down? Seems like wearing just short of an astronaut suit for safety would take the joy out of open air transport, no? When I was at Overland Expo, one of the old Camel Trophy guys cautioned that wearing a full BMW suit of amour was just as isolating from the local culture as a being inside a car. 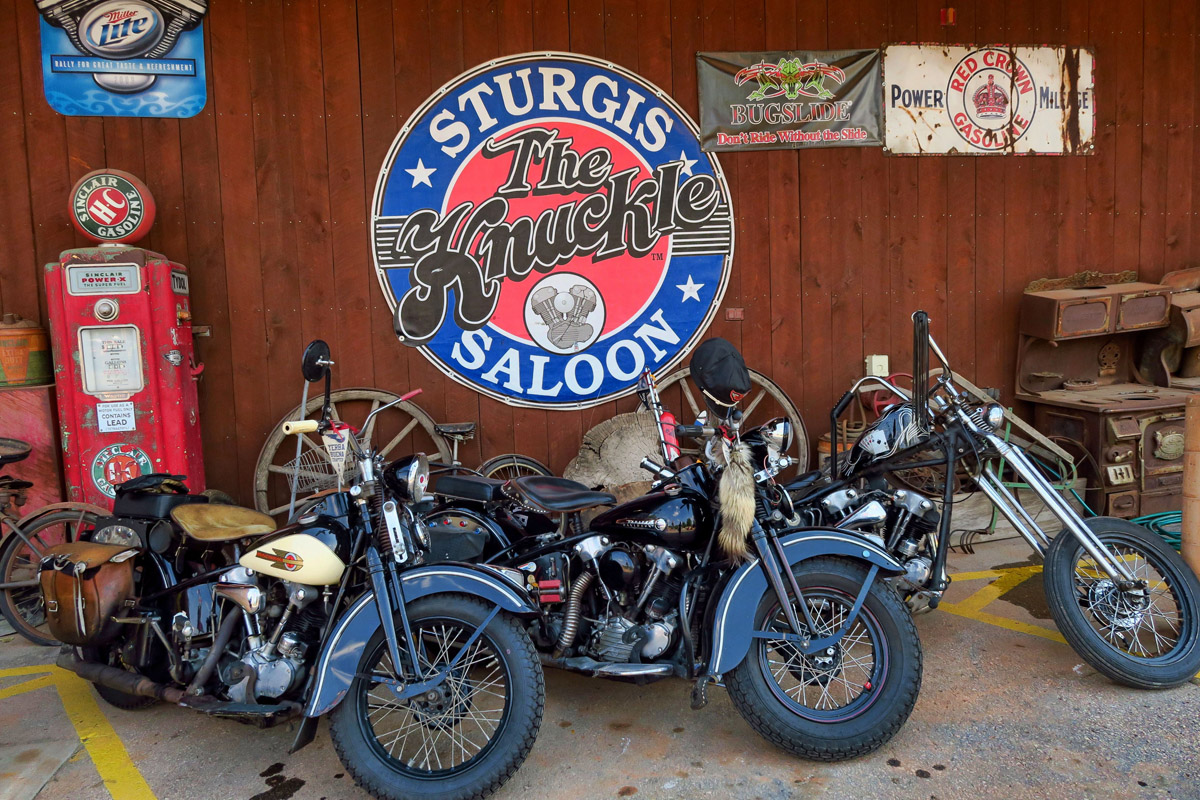 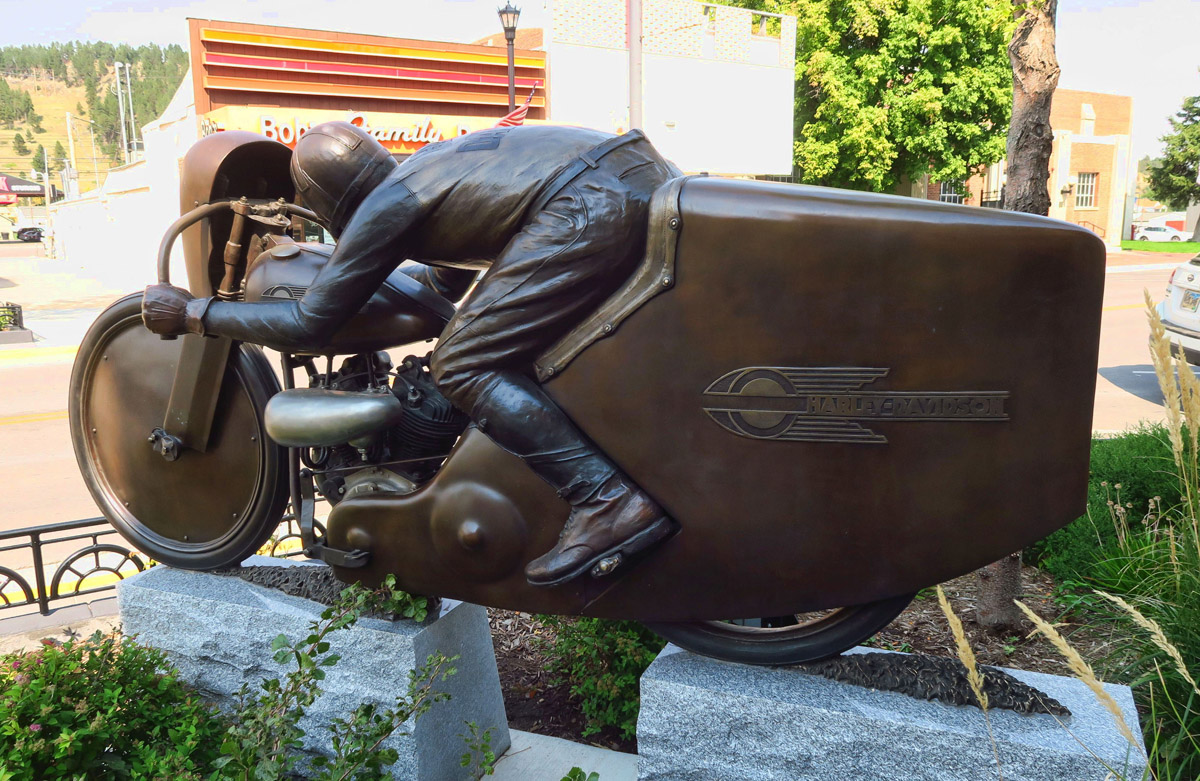 Do you ever ask yourself that old hypothetical question, “If you could take any adventure (I mean “reality” adventure, not being able to fly or go into space kinda stuff) and be guaranteed you would emerge on the other side unharmed, what would it be?” For me, the decision would probably involve circumnavigation on a sailboat, first and foremost. But certainly a motorcycle ride around the globe would rank pretty high up there too. 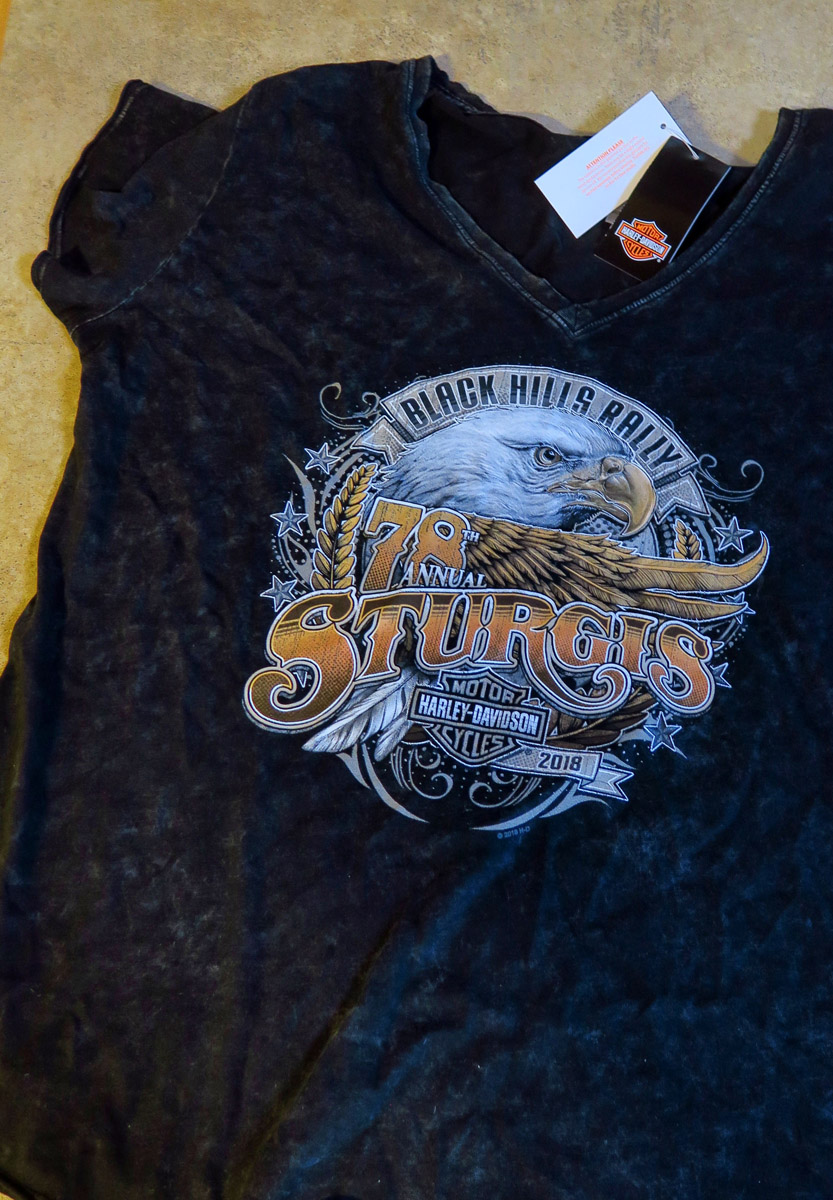 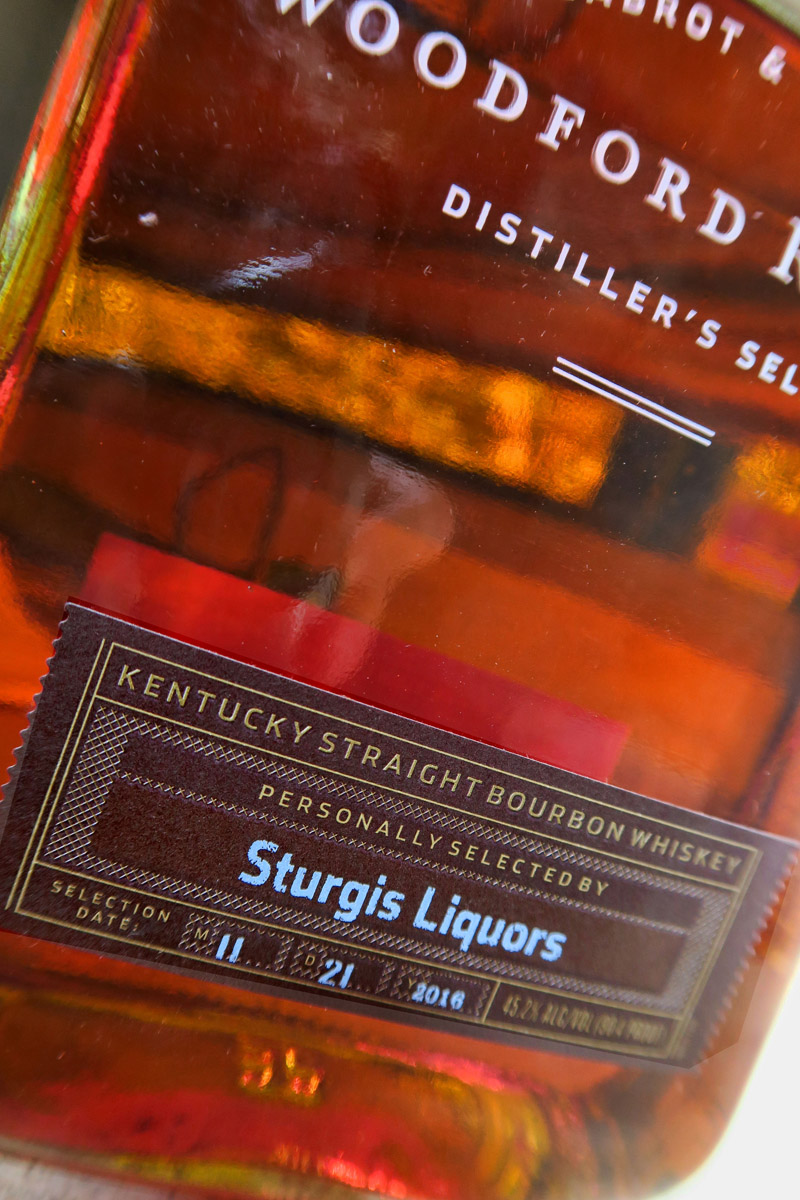 My other Sturgis souvenir…also on sale. Pays to shop after the rally!

Would that ride on the back of the Cushman, hanging on to my Dad for dear life have been just as thrilling if there had been no risk?  I’d like to think so, but fact of the matter is, I doubt it would have been as ingrained in my memory.

13 thoughts on “Confessions of a Sturgis Lurker”