When one lives in a house on wheels, the country is one’s oyster. It’s up to us to make the pearl. It’s possible to live, albeit temporarily, in a cabin on a mountain top, enjoy sunsets in a field of saguaro cactus or a red rock canyon, or have a temporary beach side cottage on either coast. So why in the world would I choose to spend time in Iowa? Well, I have my reasons…

Reason Number One is that Iowa is my 49th state! Having skirted all around it over the years, I’ve never had a reason to visit the “heartland.”  So being in the adjacent state of South Dakota, I figure it’s time. But there are more valid reasons to visit Iowa than just tagging a 49th state…and here are just a few of them.

Whether or not you happen to be a “follower of Frank”  as in Lloyd Wright, you might be surprised to learn the architect has a footprint in Mason City, Iowa.  Who would think he had presence enough to earn himself a life-sized bronze statue in the historic downtown park? The inscription at the bottom of the statue reads “Invest in Beauty,” an abbreviated version from his quote, “If you foolishly ignore beauty, you will soon find yourself without it. Your life will be impoverished. But if you invest in beauty, it will remain with you all the days of your life.” 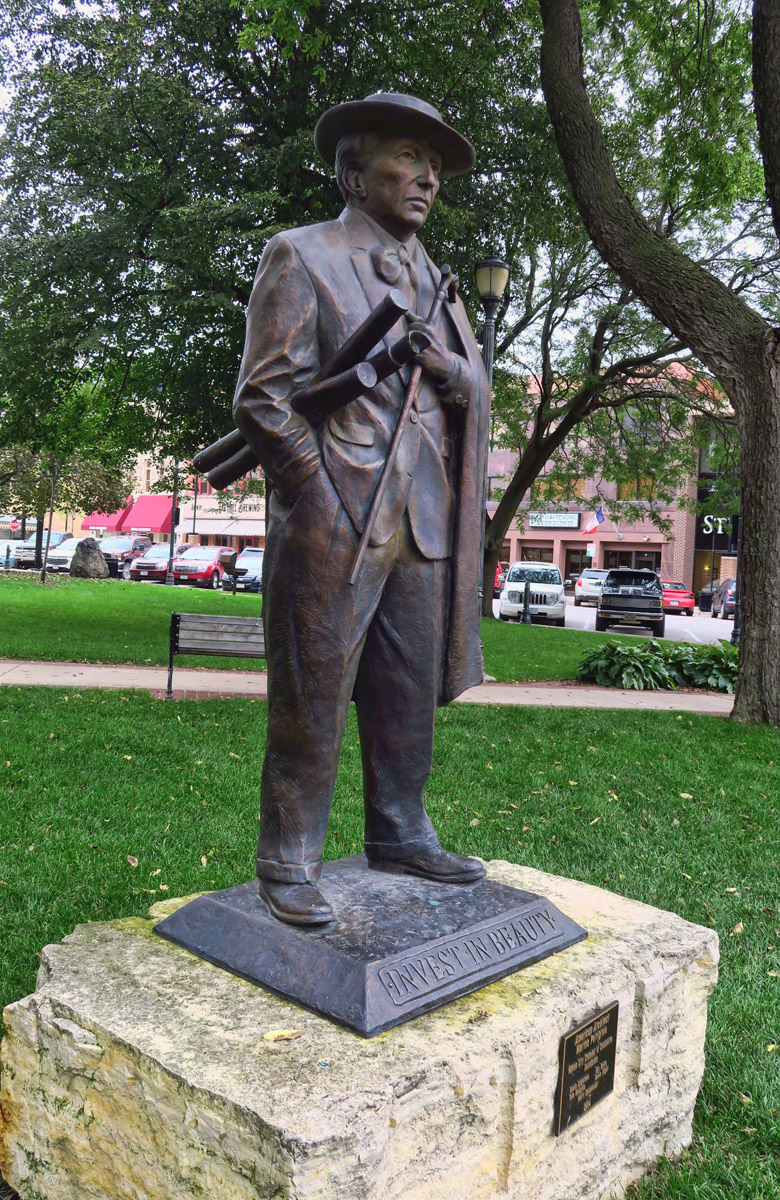 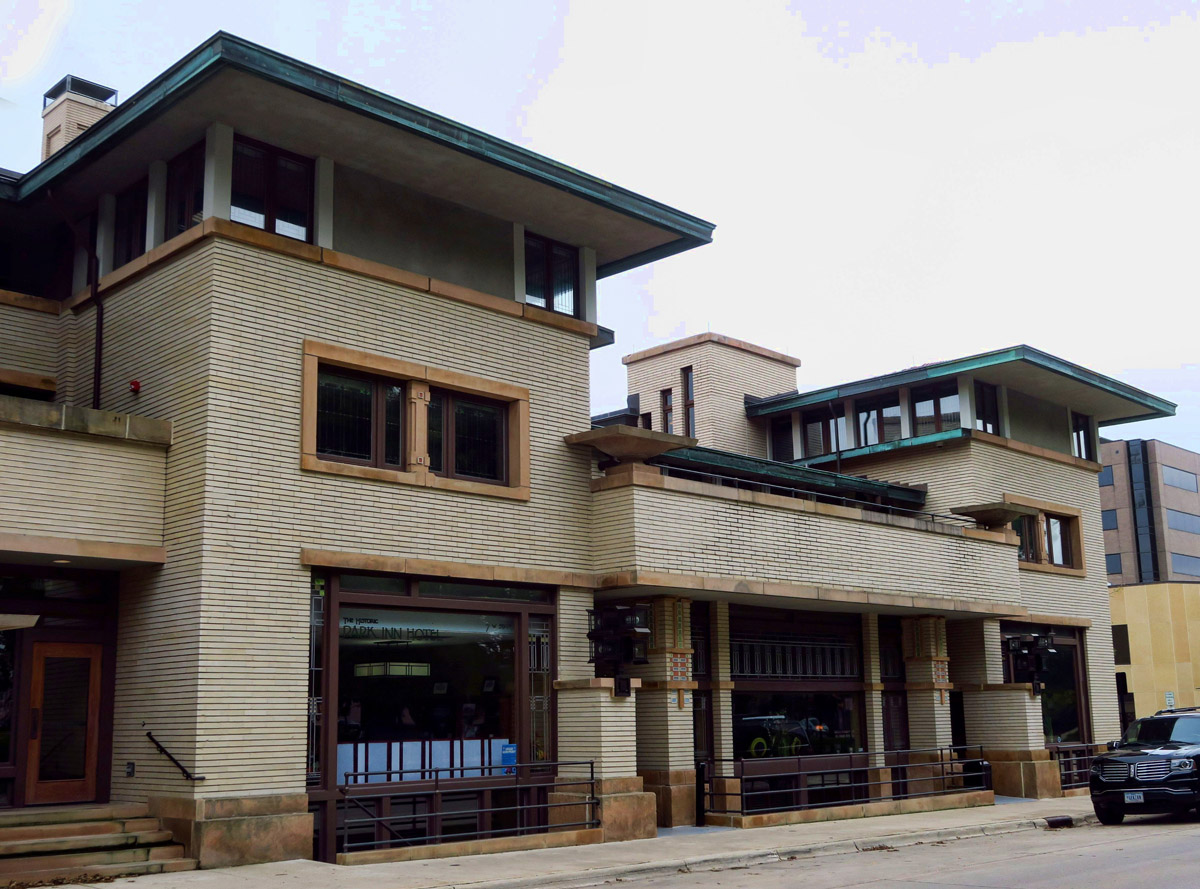 The architect has two prominent buildings open to the public in Mason City, the most noteworthy is the Park Inn Hotel and City National Bank complex, constructed in 1910 along the main square. Wright designed six hotels during his lifetime including the Imperial Hotel in Tokyo. This one in Mason City is the only one remaining in the world. The original complex incorporated a 42- room inn (operating today as a smaller boutique hotel,) lawyer offices (now the hotel’s wine cellar and library) and bank (now the hotel ballroom) in one well-integrated design.

Most of Wright’s work is concentrated in Oak Park, IL, or in the neighboring state of Wisconsin.  So why Mason City?   Two daughters of one of Mason City’s prominent attorneys attended the Hillside Home School in Spring Green, WI, a school Wright designed for his aunts. The attorney was an admirer of Wrights work, and commissioned him to build the City National Bank and the Park Inn Hotel complex, incorporating the attorney’s office into what they called the “waist” in between the two. 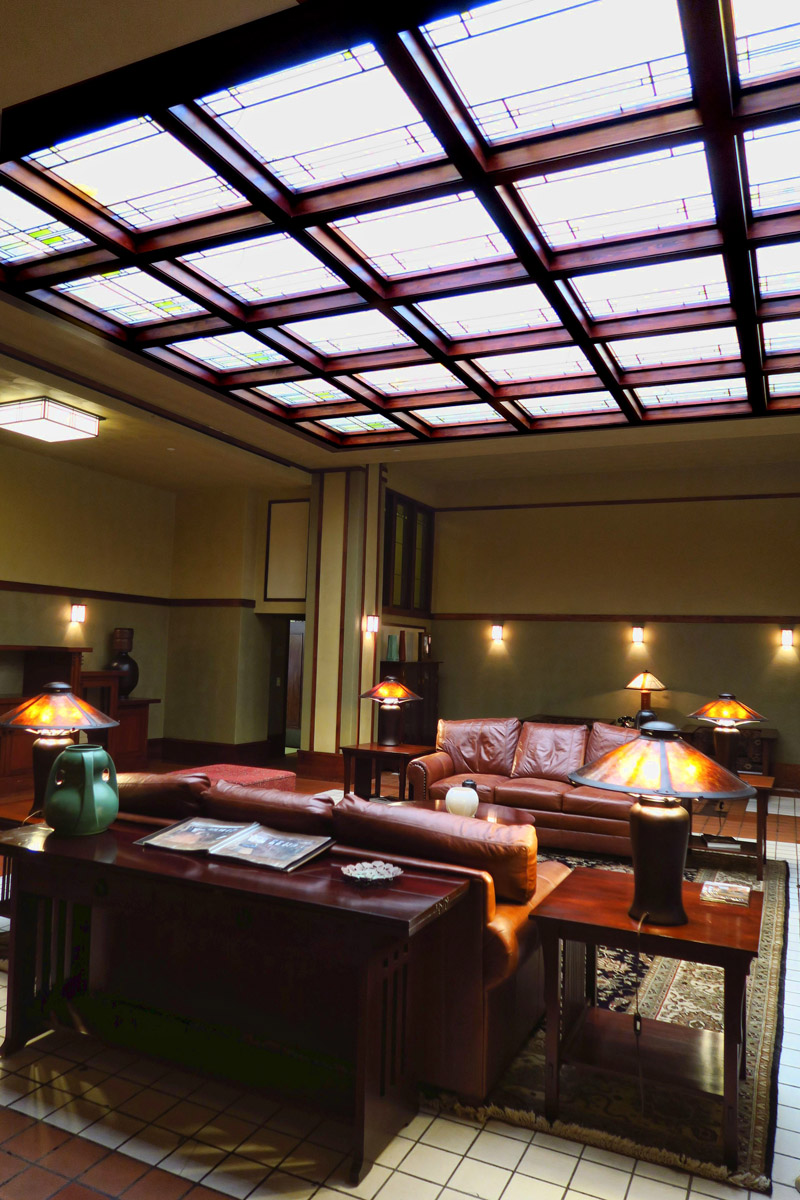 The hotel lobby used to be a cafe. The floor and the art glass skylight are the only original fixtures that remain in the lobby. 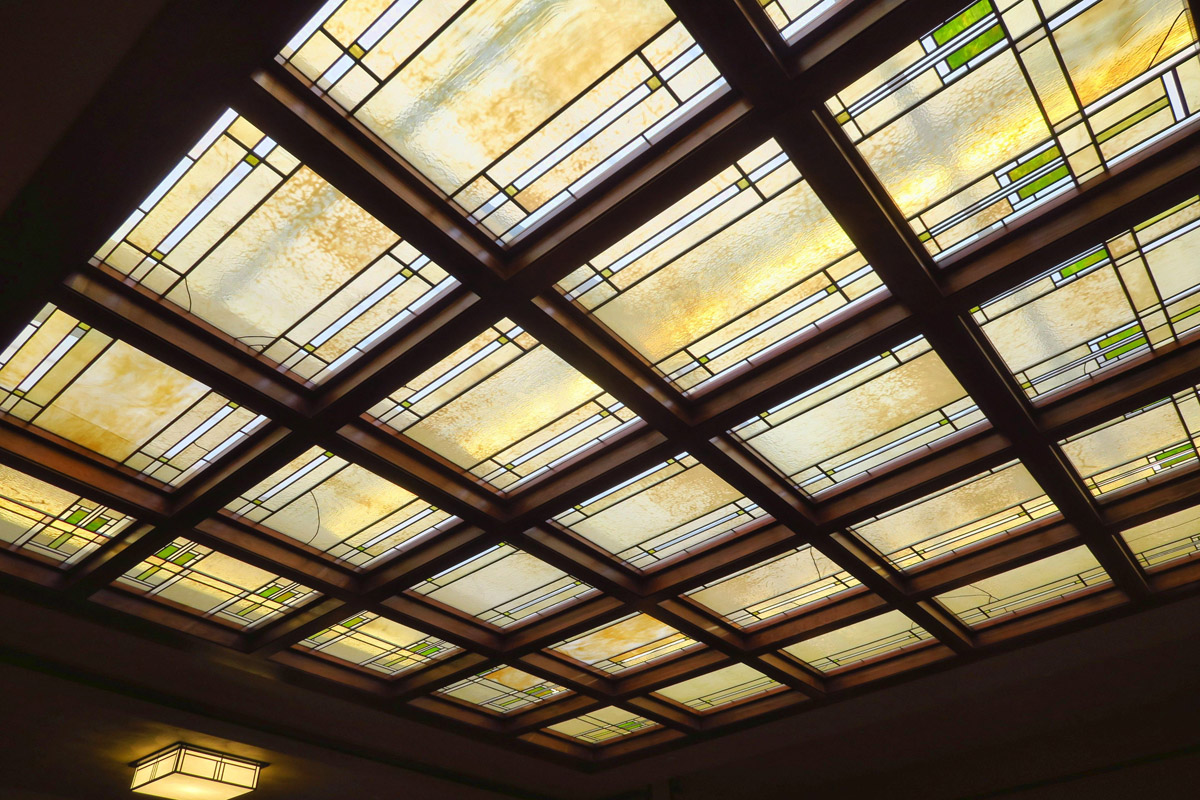 All 25 panes of the art-glass skylight were still intact from the date the hotel opened in 1910. 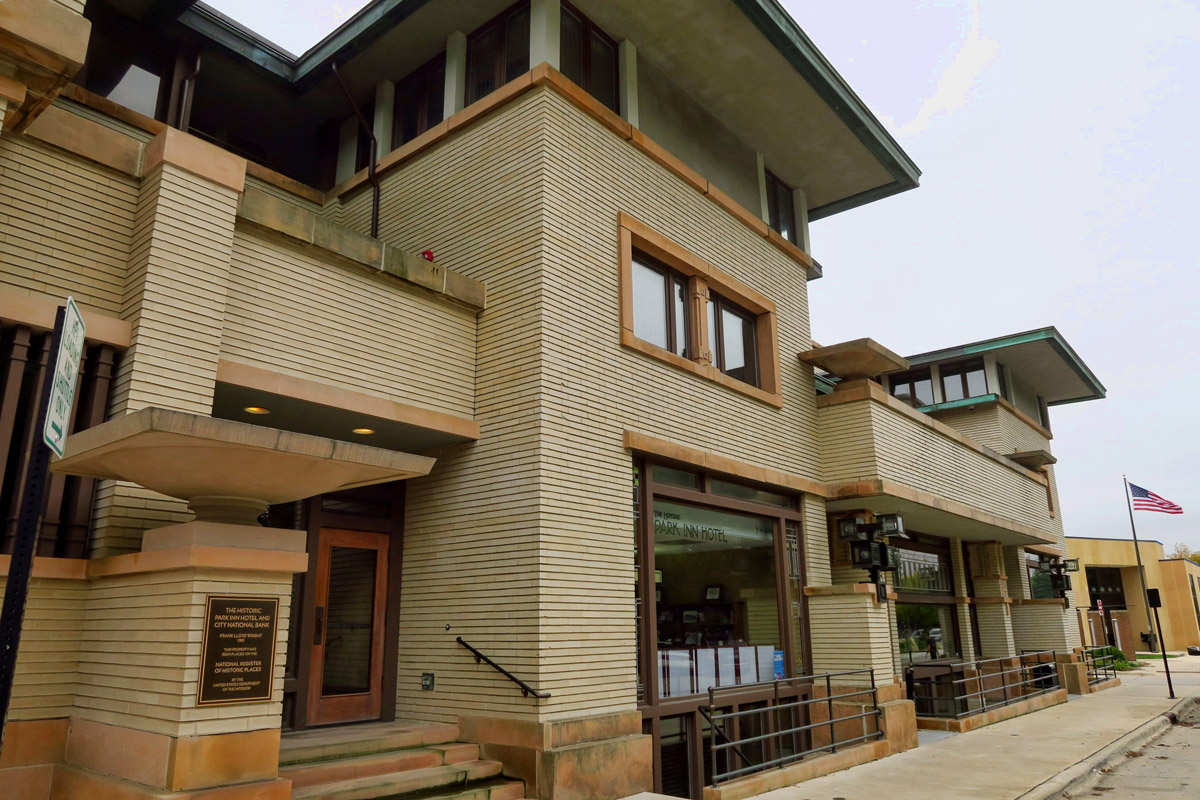 Wright on the Park now owns the property and leases it to the hotelier.

Both the bank and the inn were hit with hard times during the 1920’s when the farm crisis caused failure of banks across Iowa. The hotel also fell into disrepair, leading to a lineage of changing owners trying various venues. Finally, in 2005, the complex was placed on the National Register of Historic Places, and Wright on the Park, the non-profit organization responsible for the restoration of the bank and hotel complex raised 18.5 million to restore the complex to its original state.

One of the things that strikes me about the Frank Lloyd Wright style is its timeliness. These buildings, built over a hundred years ago still stand the test of time. 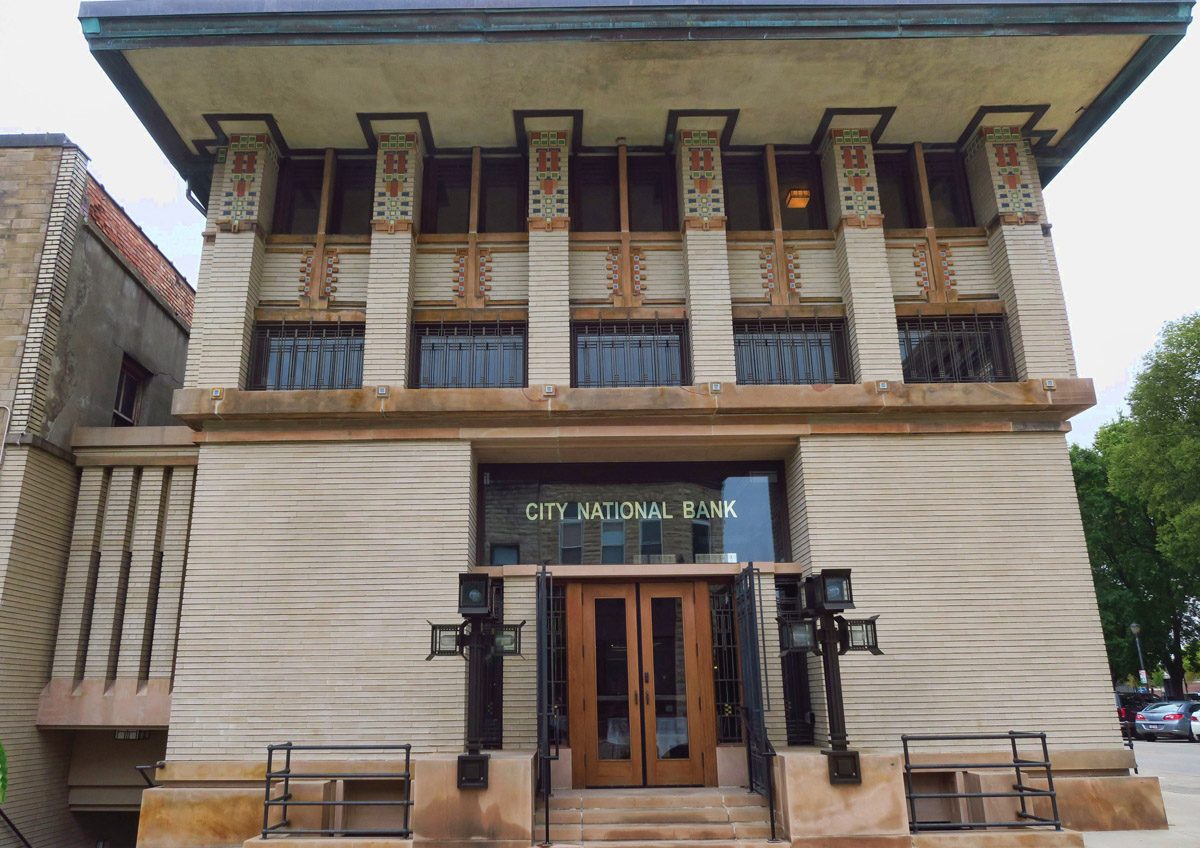 Around the corner from the hotel entrance is what was the City National Bank. It was to appear like a “strong box” with no windows on the first floor. 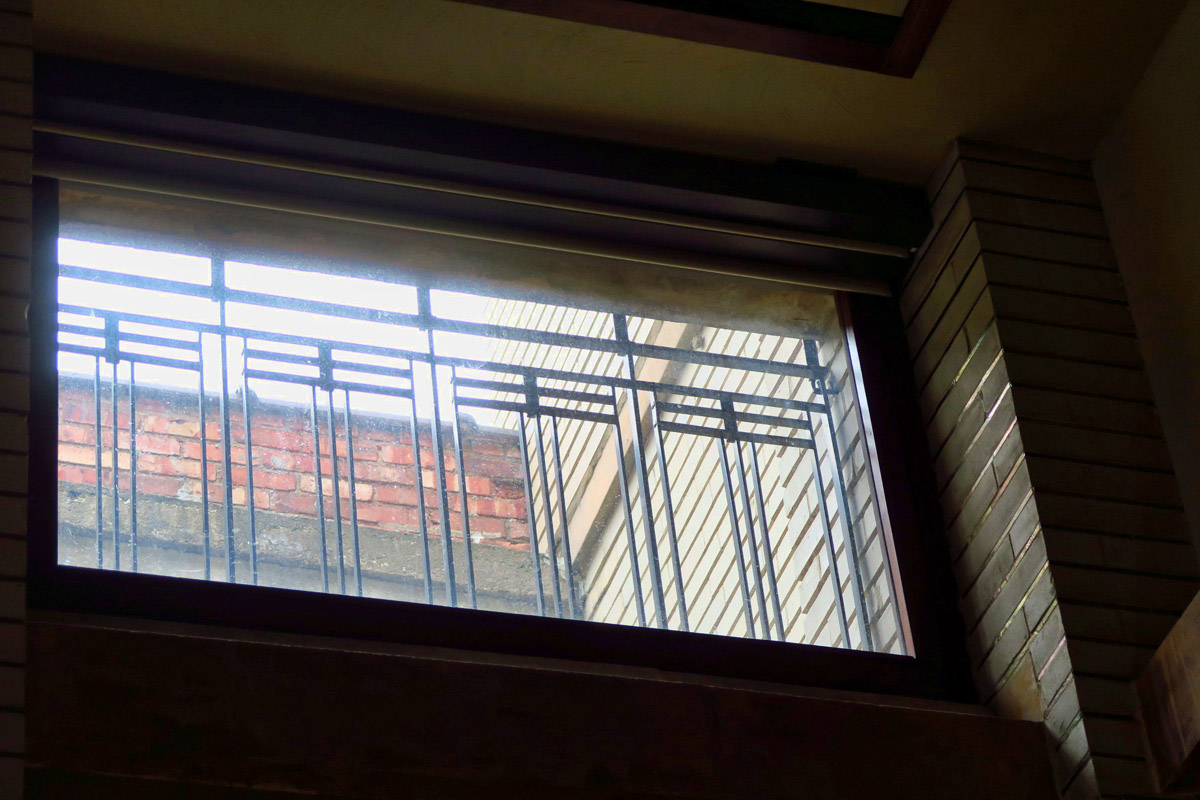 The grates on the upper clerestory windows are original. Also note the iridescent gilded mortar between the bricks in the columns on the right. This was to reflect light onto the lower floor which had no windows. 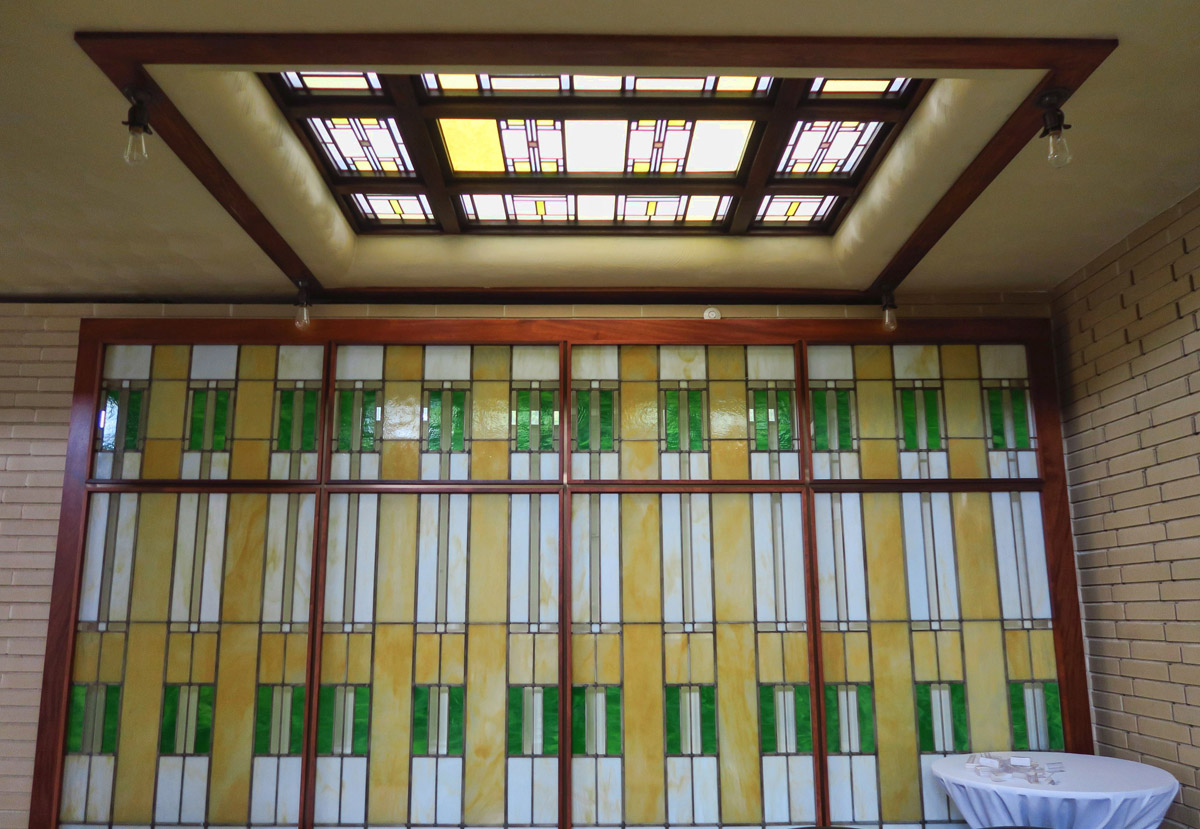 These art-glass panels were used to divide bank offices. The former bank now serves as the hotel ballroom. 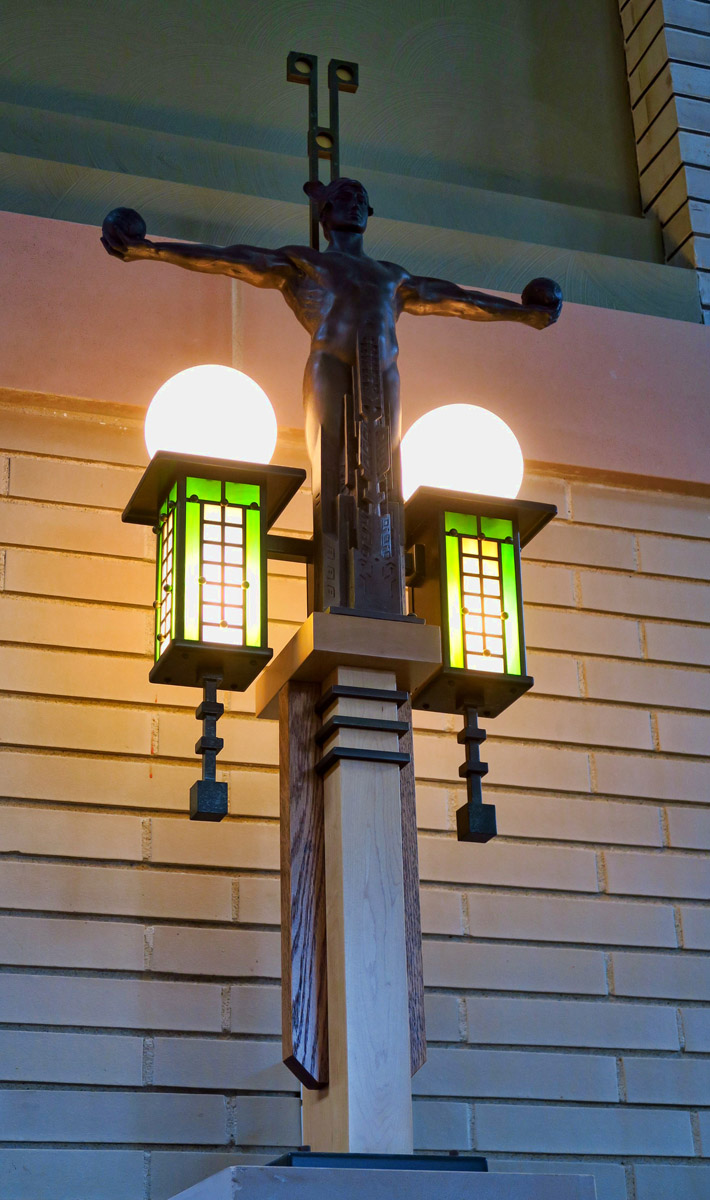 The “teller cage” in the center of the bank lobby was topped with four of these “Mercury” statue light fixtures. Two originals remain, one in the Mason City Public Library, and the other a part of a private collection. But neither wanted to relinquish their artifacts, so the Library loaned their statue out for the purpose of replication.

Wright’s other notable structure in Mason City is adjacent to the Rock Crest/Rock Glen Historic District.  This neighborhood is where early 20th century architects following the Prairie School of Architecture created a grouping of homes facing Willow Creek, the largest collection of Prairie-style design surrounding a natural setting in the US.  This area earned Mason City the distinction from Conde Nast Traveler as being among “The World’s 20 Best Cities for Architecture Lovers.”  A map detailing a nice walking tour among these homes can be obtained from the “Wright on the Park” office in historic downtown,

Across the street from Rock Crest/Rock Glen is the Stockton House, designed and built in 1908 by Wright for Dr. George C. and Eleanor Stockman, the neighbor of one of the lawyers who commissioned Wright to build the hotel and bank complex.

In keeping with the style he made famous, the house demonstrates the “compression and expansion” principle of keeping entrances to rooms low and compact, then exploding into vast open rooms ringed with ribbons of windows. Just as with any Wright designed home, the details in the design, proportion, and symmetry are remarkably impressive for 110 year old design.

Tours of the Stockman Home are offered daily for a $10 donation. I highly recommend the tour to learn more about the intricacies and idiosyncrasies of Wright and his designs. (Sorry, no photos inside the house itself.) 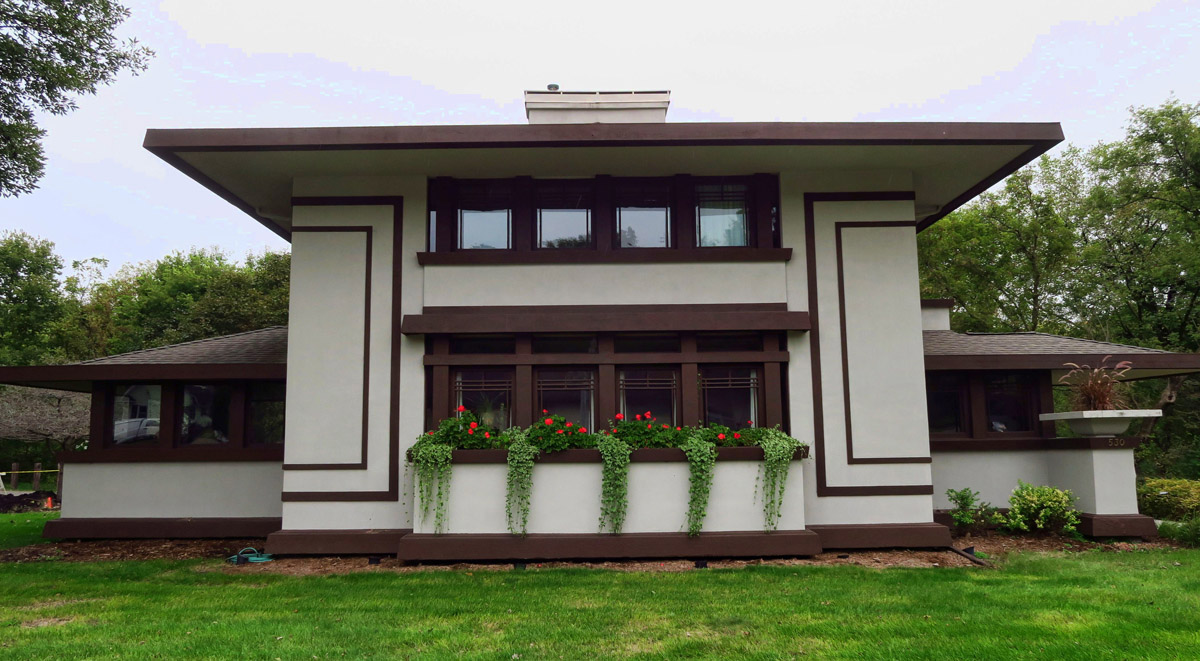 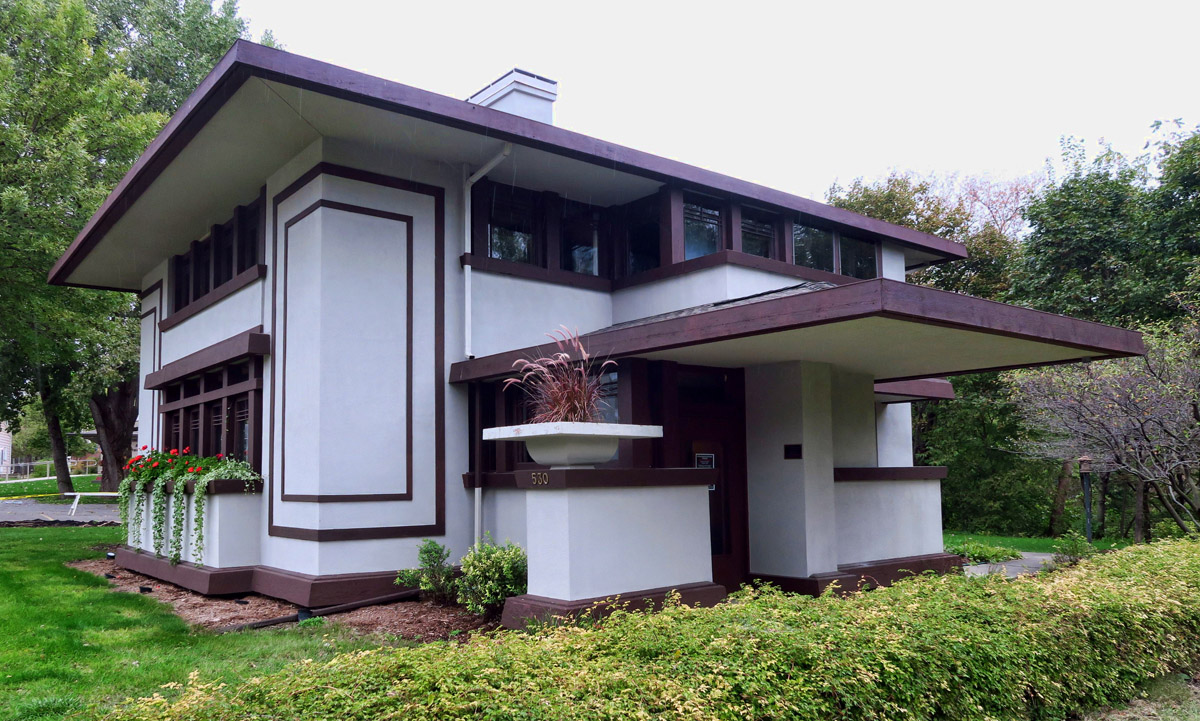 On to the next reason….which is not really a legit reason, but if you happen to be in Mason City Iowa, AND you are a shameless carnivore like I am, don’t miss Northwestern Steakhouse. I learned about it from a magazine article as “the most iconic restaurant in the state.” It’s been in business since 1920, offering a unique menu of Greek-style steaks, which means bathed in garlic and olive oil. You might need a liver cleanse afterward, but it was worth it. 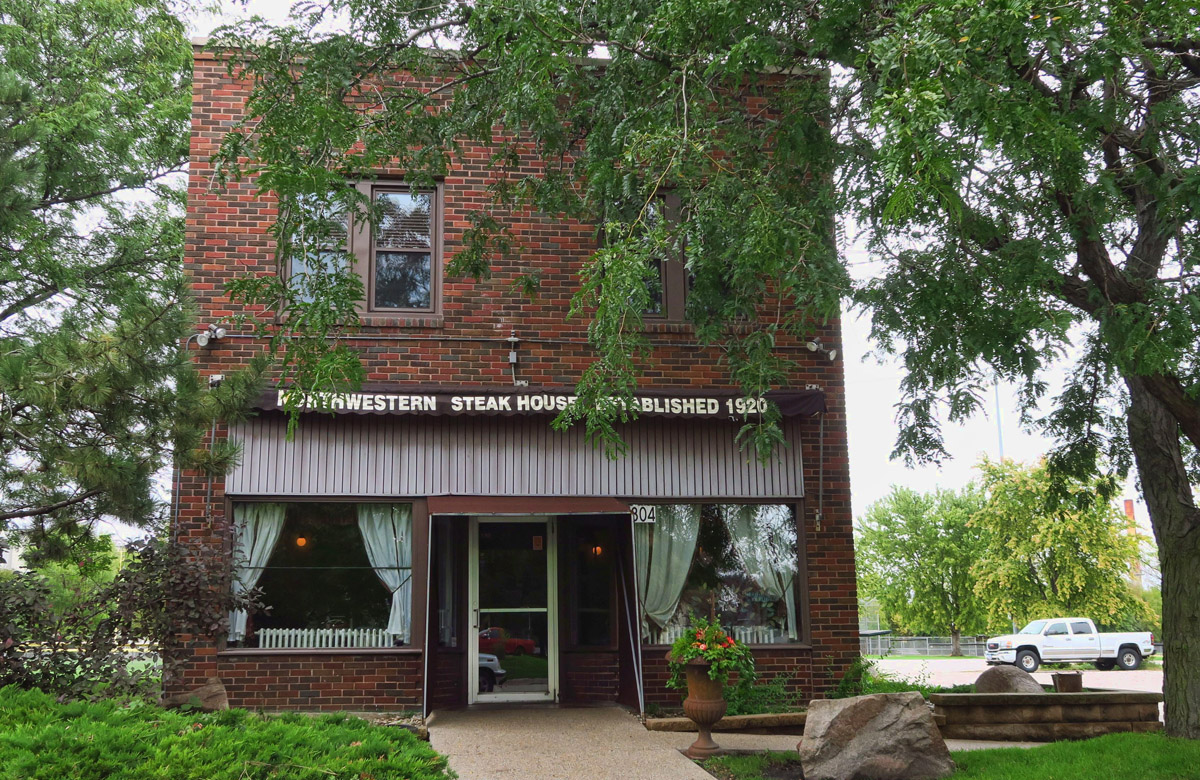 I drove by before it was open and snapped this photo. I returned at 5:00pm, and the line was around the building…

What else about Iowa left an impression? Miles and miles of two lane roads turning 90 degree angles through walls of golden corn fields. I had to laugh when my GPS would direct me to “Turn right on 100th Avenue and 490th Street” as if it were some major avenue in a big city, only to discover it was barely a paved road between the corn rows.

I am certain there are many other reasons for visiting Iowa, from Field of Dreams leading up to political caucuses, but I had my own reasons.  And there was another reason why I came…but this post is long enough.  So stay tuned for the “main” reason, up next…

12 thoughts on “Reasons to Visit Iowa”