Now on to the real reason I was in Iowa — to visit the Winnie’s birthplace.

If Iowa is the heartland, the Winnebago River has got to be a vein leading there….at least to Winnebago owners. Along this river is Winnebago Headquarters, more affectionately known as “the mother ship.” Visiting WGO HQ is a rite of passage for any owner, and they are certainly made to feel welcome as only Mid-westerners can. A beautiful grassy field with 1,500 electric poles, water spigots at the end of every row, dump stations throughout, and steaming hot shower blocks. 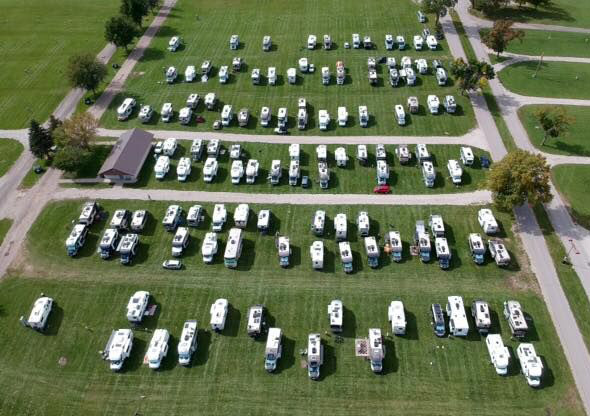 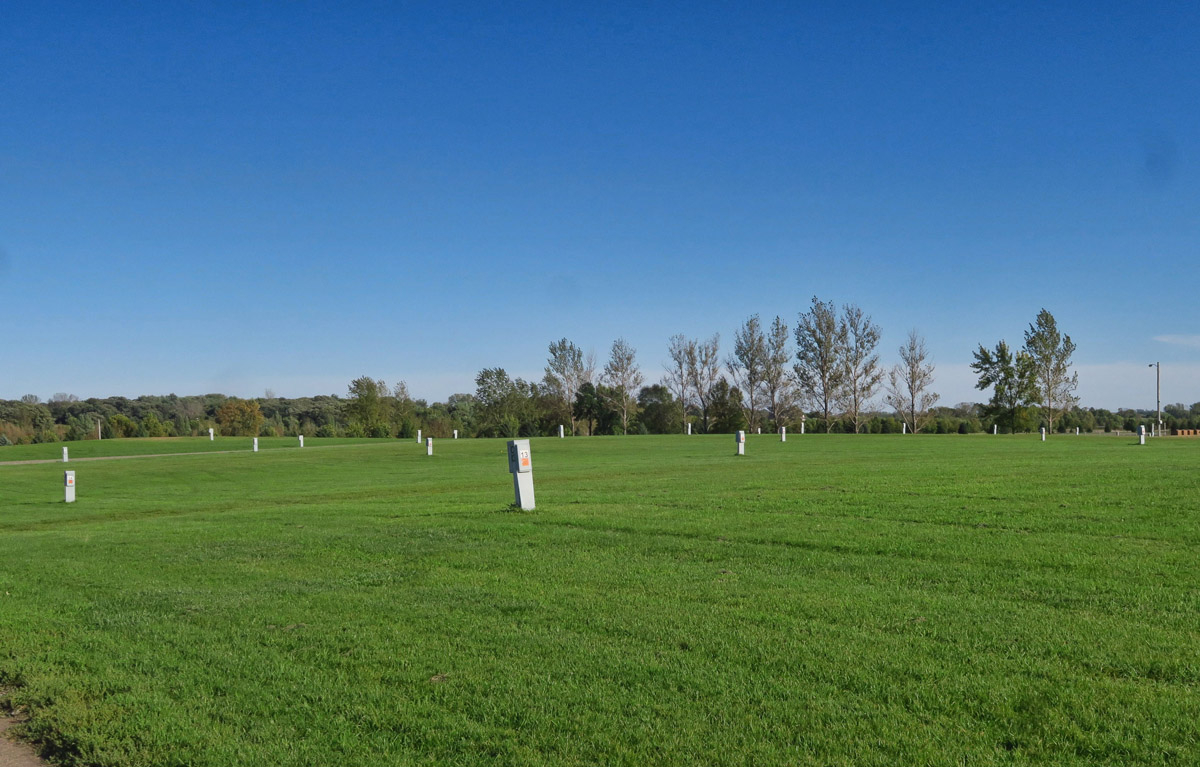 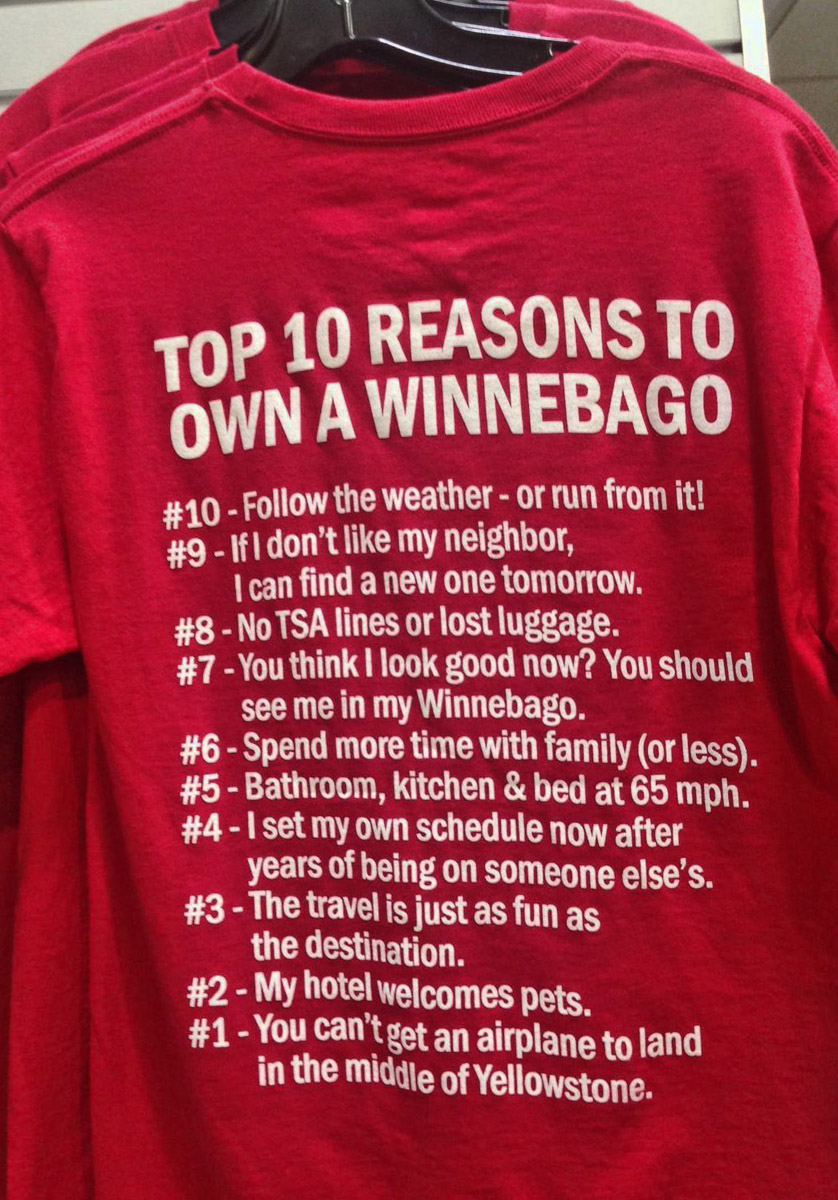 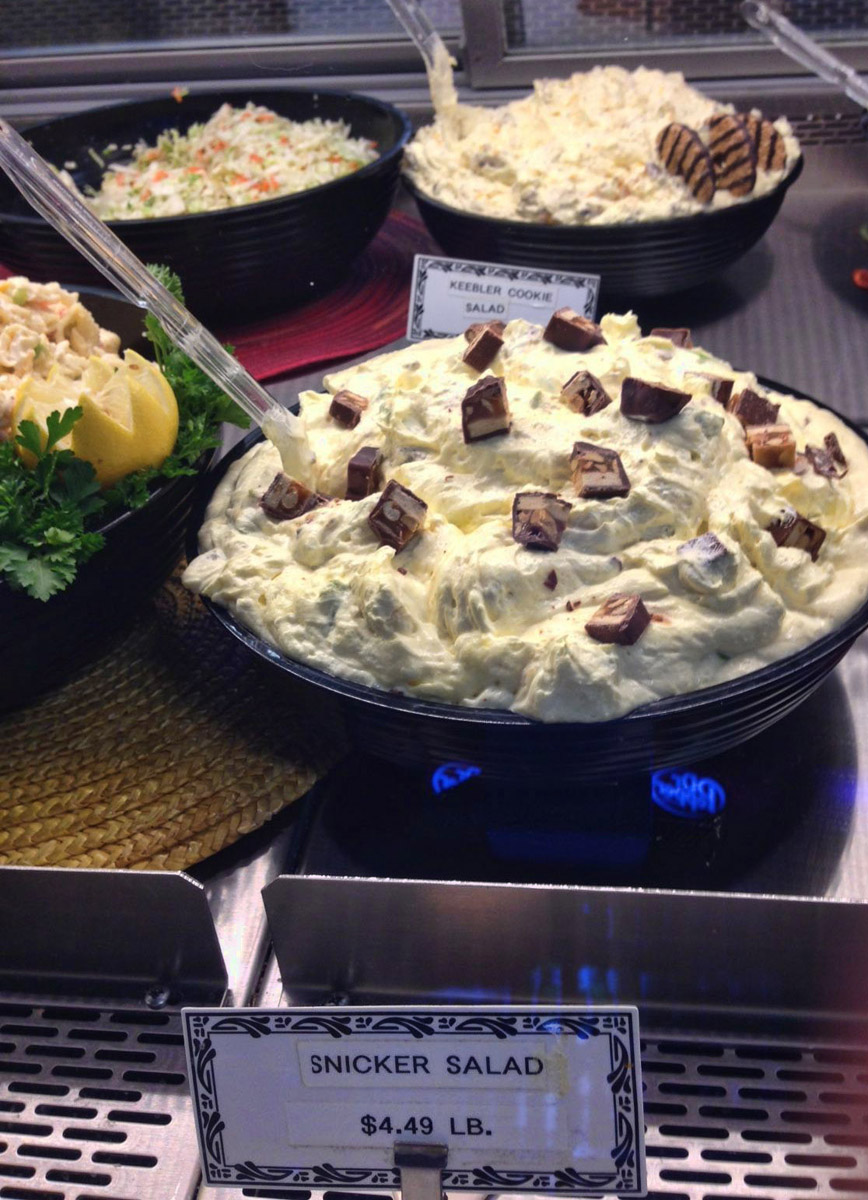 They have some interesting food offerings here in Forest City. “Snicker Salad?” Yep, that’s real snicker bars made into a “salad.” And the one behind it is “Keebler Cookie Salad.” I think the Top 10 Reasons T-shirt needs “Reason #11, so you can bring your own lunch!”

Winnebago throws a party every summer called the Grand National Rally where every spot will be filled into the overflow fields. Anyone owning anything branded WGO is welcome, from big diesel pushers to towables. But this fall, WGO offered a first….a mini-rally just for us “compact coach” owners; Views, Navions, and the latest Class C on the Fort Transit chassis, the Fuse. This is a small group by Winnebago standards, but huge to us View Owners. A typically View/Navion rally will attract anywhere from 50 to 70 coaches. But this one brought in 120!

Since it was the first of its kind, and I was only a state away, I thought it would be fun to attend. Plus I had friends also attending. And I had never been on the factory tour before. While Winnebago has other satellite factories where the Class Bs and towables are manufactured, all Views and Navions are made right here on the line in Forest City. So it was fun to “walk the line” where my own View was birthed! 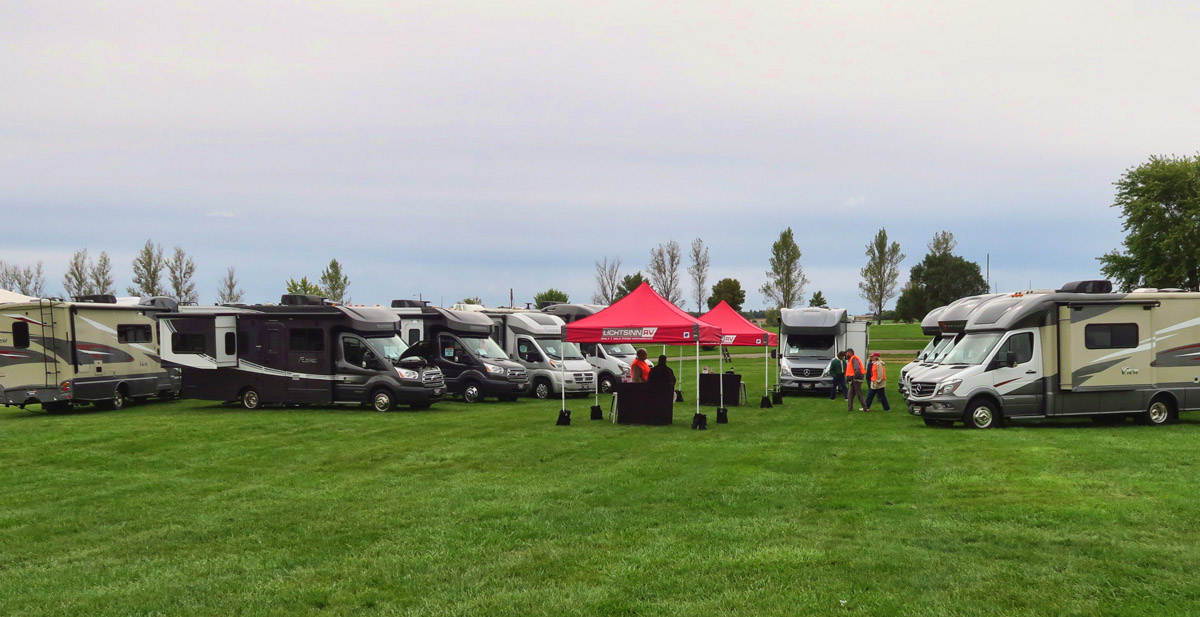 Gotta love how WGO Sales brings the “showroom floor” to the rally grounds. Fortunately for my retiree budget, I didn’t see anything I liked as well as my 08VJ. 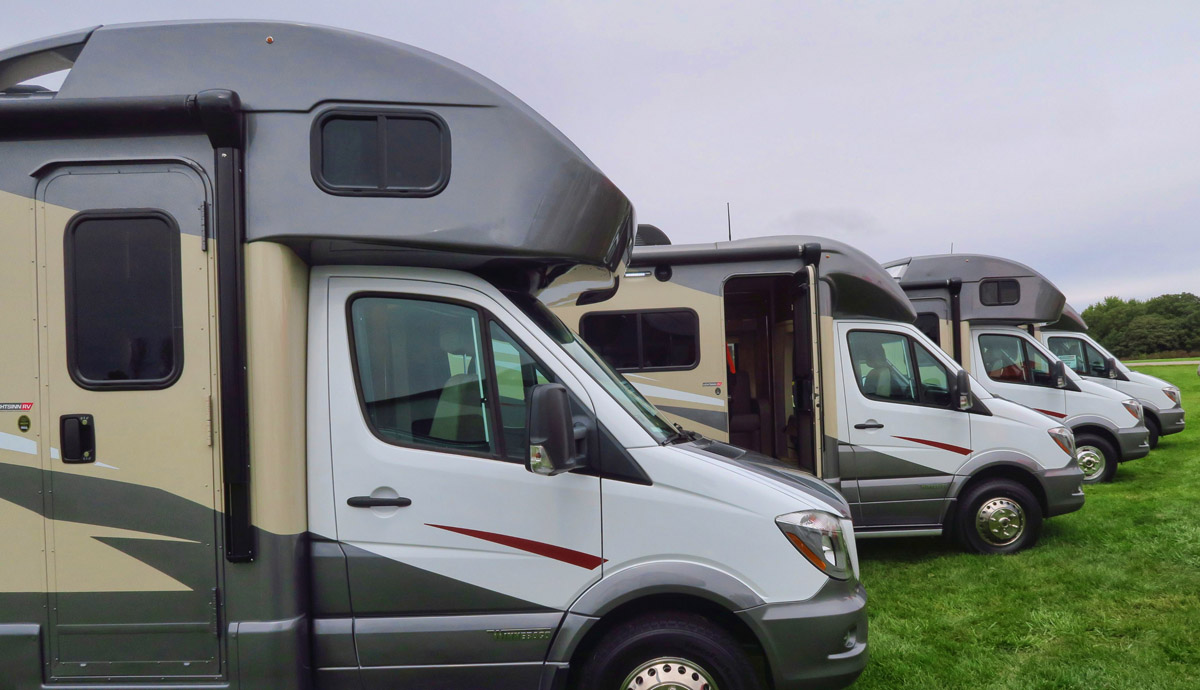 Strangely enough, the most popular model seems to be the one with the fold-up Murphy bed. I had to laugh when a friend said “It reminds me of college kids hauling furniture.” 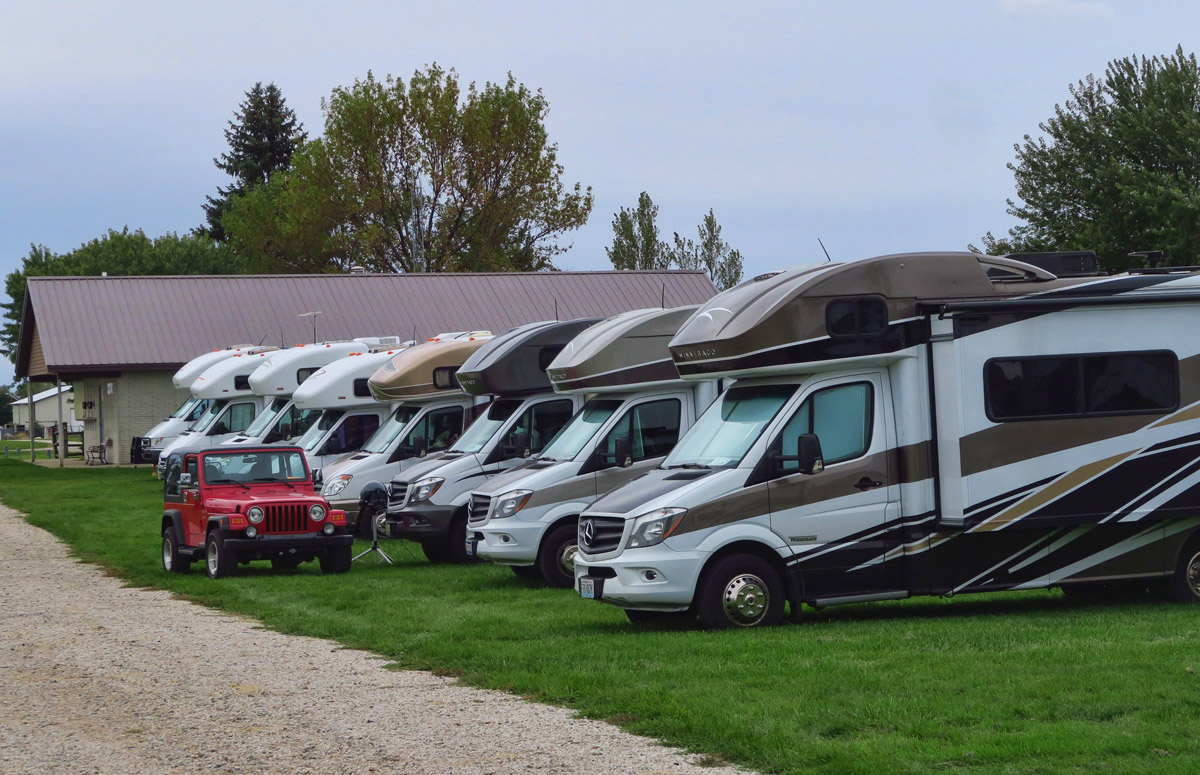 This row of rally attendees demonstrates the evolution of the shape of the cab-over. The ones down at the end are the older models with the more rounded cab-over, with the ones to the right being the newer, more angled shape.

Since we were visiting on a weekend, we got the abbreviated tour as the line wasn’t running. This gave us the advantage of getting to walk right down the line, snooping in each of the coaches in various stages of manufacture from the time the cut away chassis enters the massive building, walls and floor are added, cabinetry and the slide are dropped in from overhead, to the final “punch list,” a hand-written checklist taped to the hood as the assembled coach exits the line. I found the factory tour to be so fascinating that I went back Monday morning (free hook-ups, after all) to take the longer tour that visited more buildings. Of 22 buildings on the property, we only got to visit one as a part of the rally, but four on the official tour.

Unfortunately, no photos were allowed inside any of the buildings on the tour. I certainly respect this for competitive reasons. However, it’s kinda frustrating seeing entire factory tour videos on youtube filmed by “unofficial vloggers”…particularly those vloggers who own an Airstream. 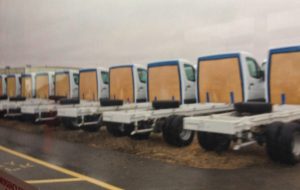 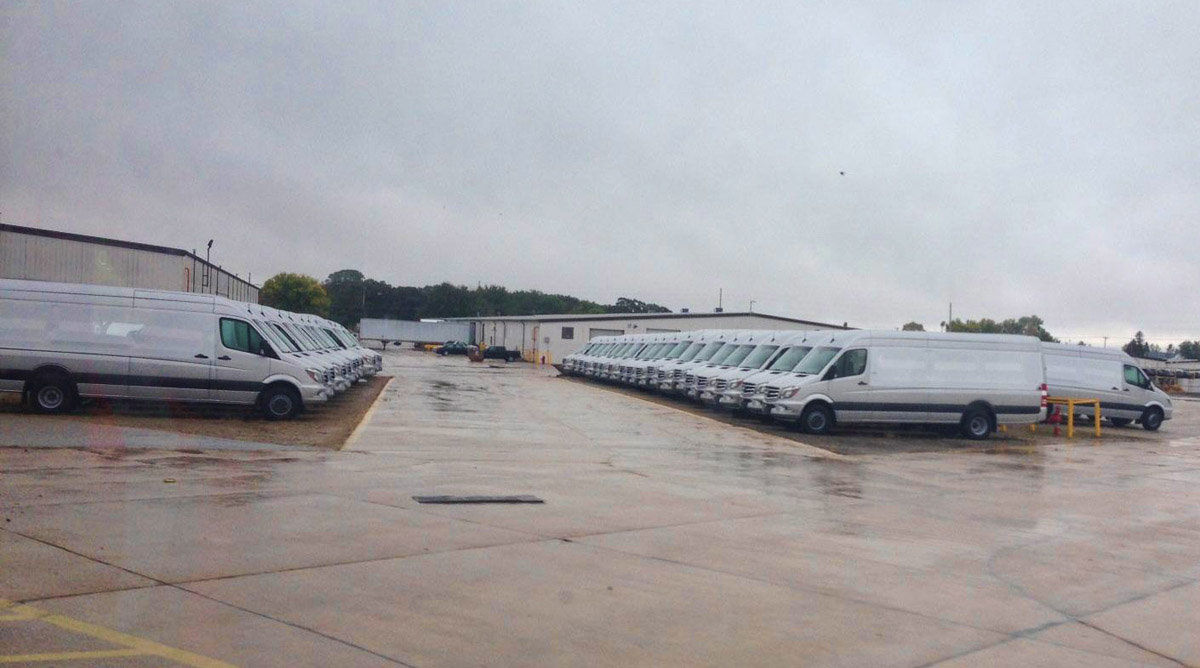 Kind of unnerving to see the number of rigs awaiting built-out. 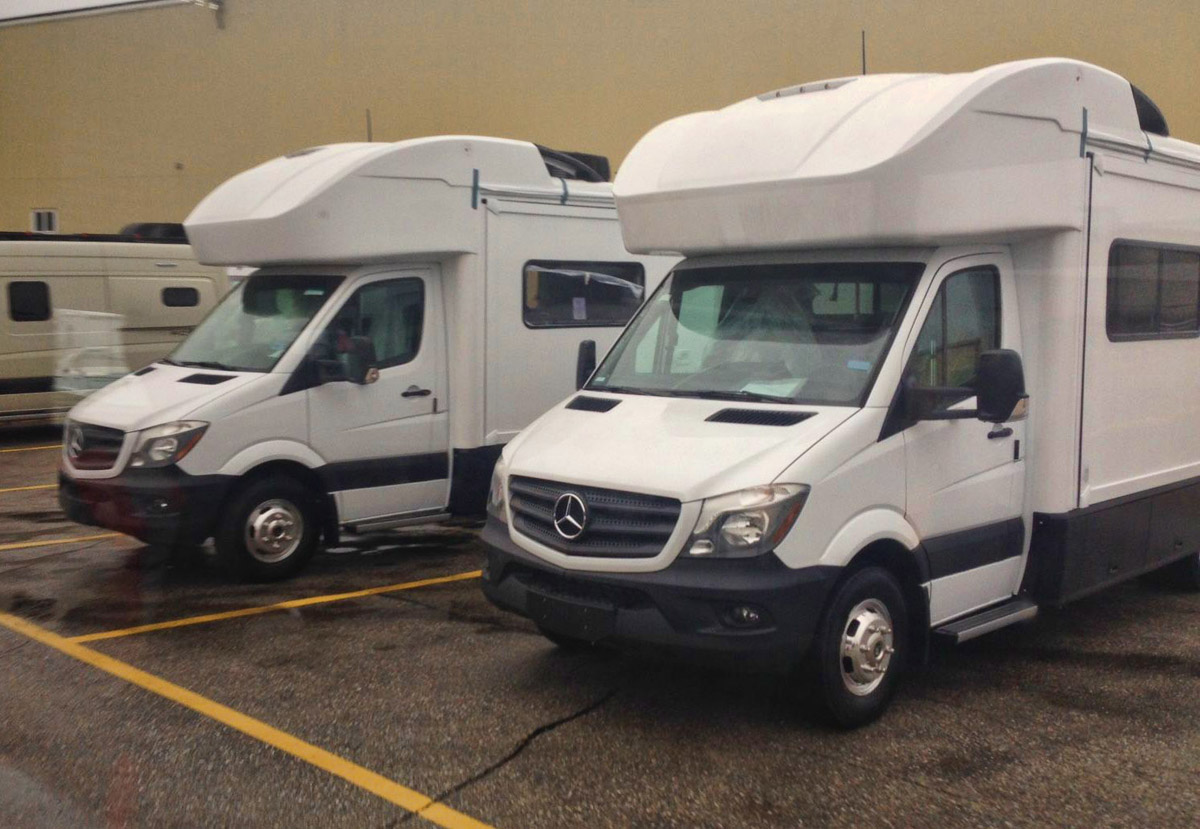 This rigs are awaiting full body paint. I think I would prefer them this way rather than with the “zebra stripes.” 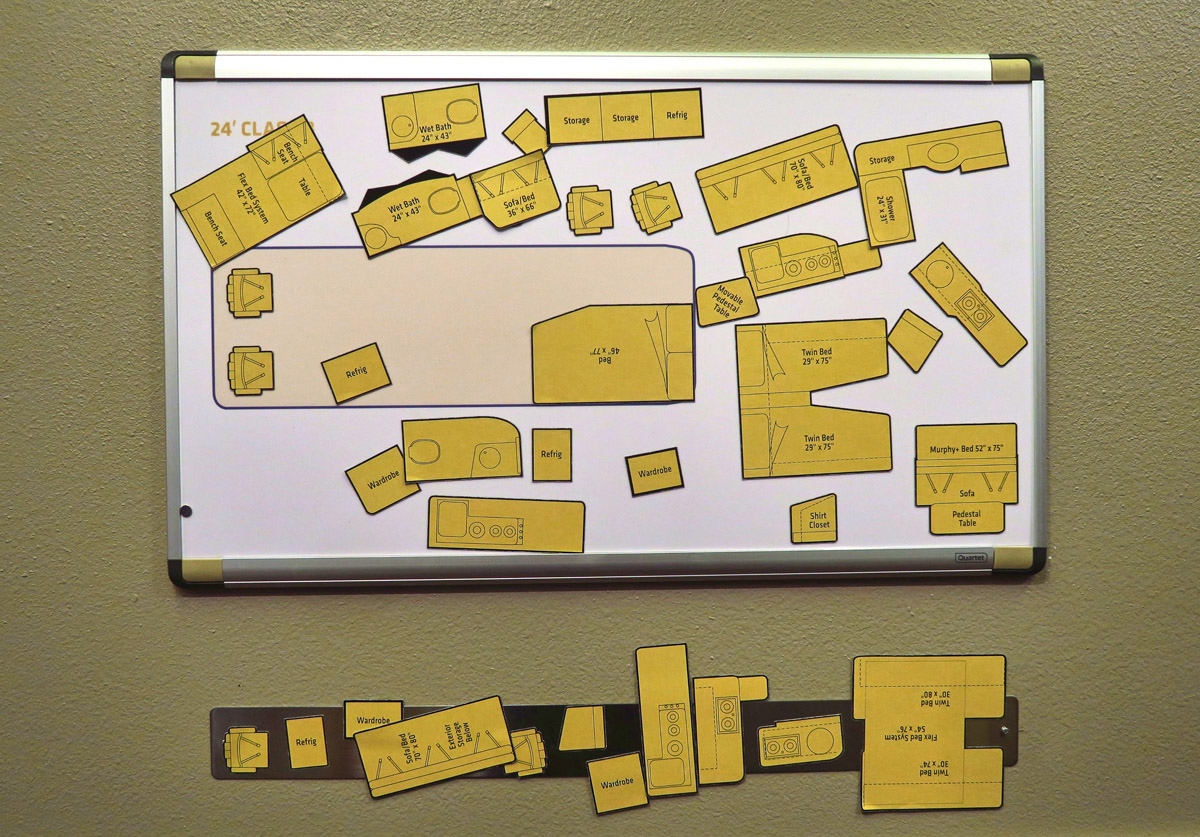 In the Visitor Center, you can design your own RV. Or at least you can see which dreams are realistic. 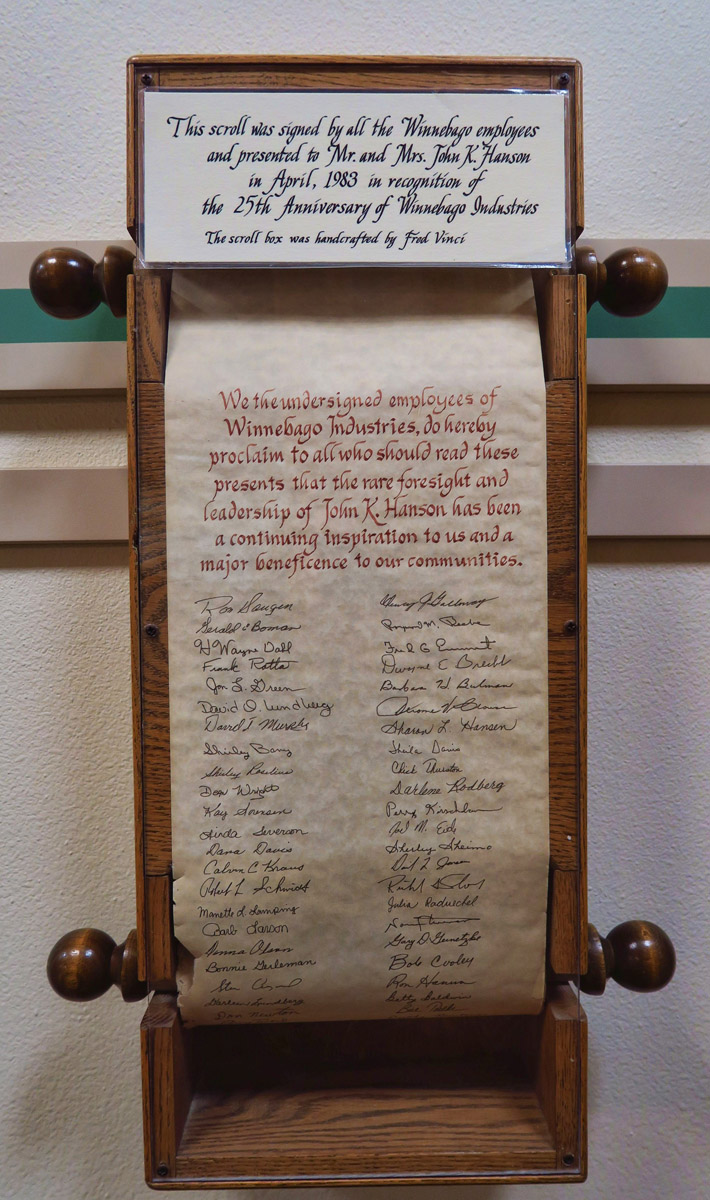 In honor of WGO’s 25th Anniversary, the employees signed this scroll. The inscription reads, “We the undersigned employees of Winnebago Industries, do hereby proclaim to all who should read these presents that the rare foresight and leadership of John K Hanson has been a continuing inspiration to us and major beneficence to our communities.”

I was most impressed to learn that just about every piece and part is manufactured right here. From aluminum and steel frames to cabinetry in the wood shop to molded custom-fit holding tanks right down to the bedspreads and pillows. I got to see fascinating machinery in operation, like the one that cuts interior wooden walls with a stream of water like a lazer at 5,000 psi. It was fascinating to watch them all work like a well conducted orchestra.

The thing that didn’t impress me so much was what appeared to be gender roles left over from the 60’s. Most of the women seemed to be confined to the sewing machines. Even the elderly gentleman who escorted us on the tour said “While you men pick out the motor and the chassis, we know it’s you ‘gals’ who pick the interiors.” He also said “you know when a sewing machine is broken down because there’s a man sitting behind it.” I found these comments to be highly disappointing, particularly since there were fifteen female WGO owners in our rally alone. I understand part of it is the culture of the heartland. But I look to Winnebago to lead the charge in quality and design. I’d like to see them lead here as well. 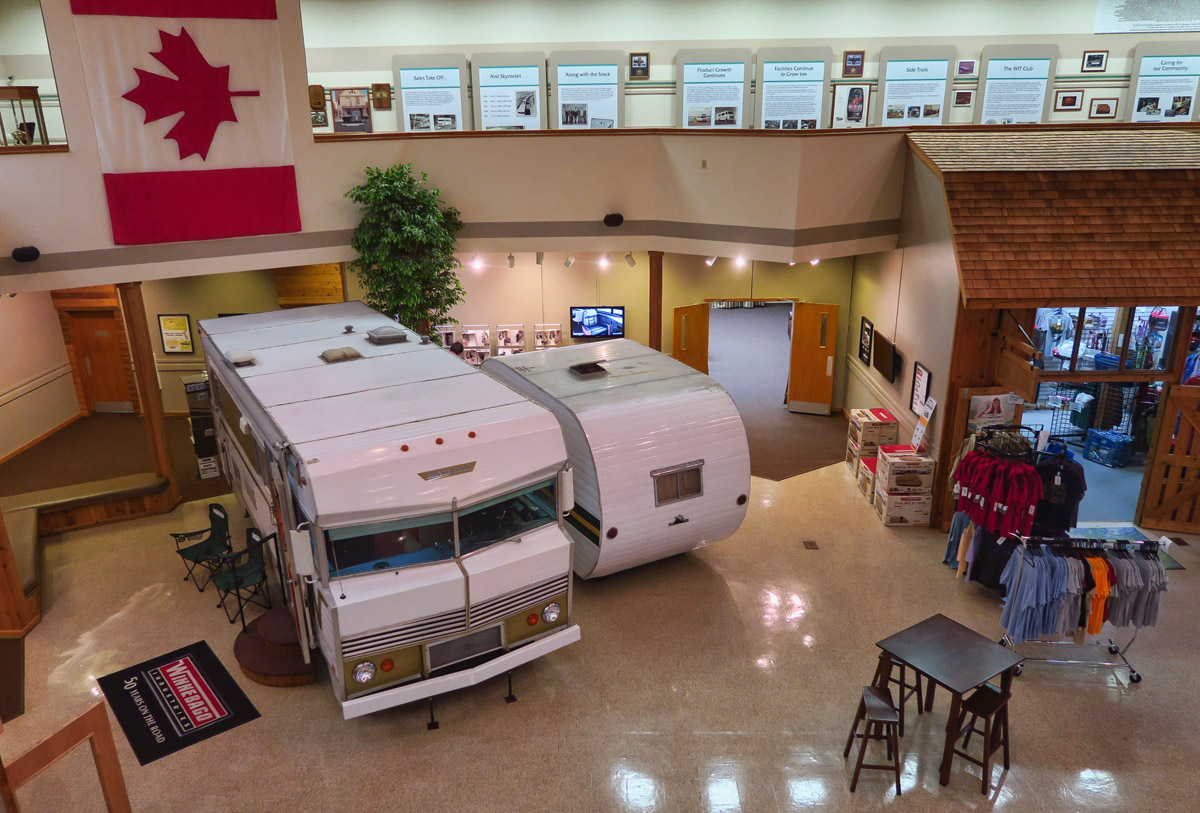 Winnebago has a “museum” in their Visitor Center. It was fun touring it, seeing the old artifacts. 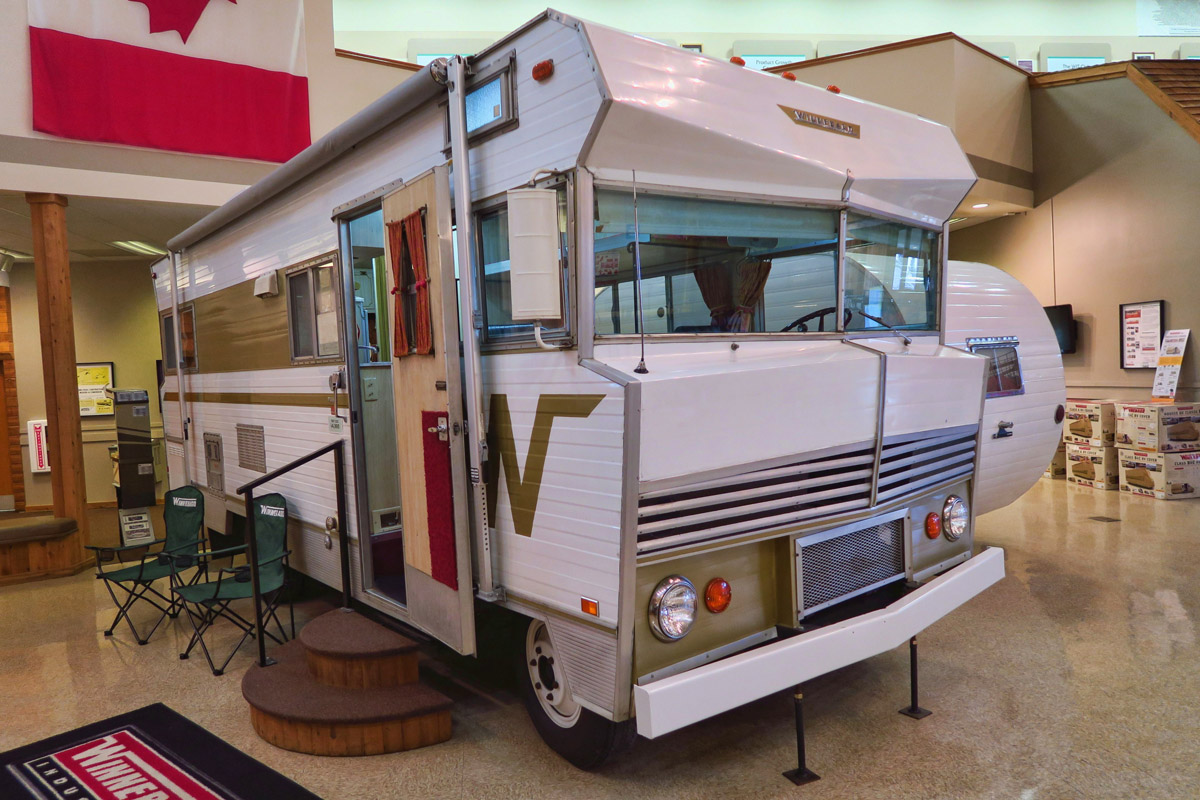 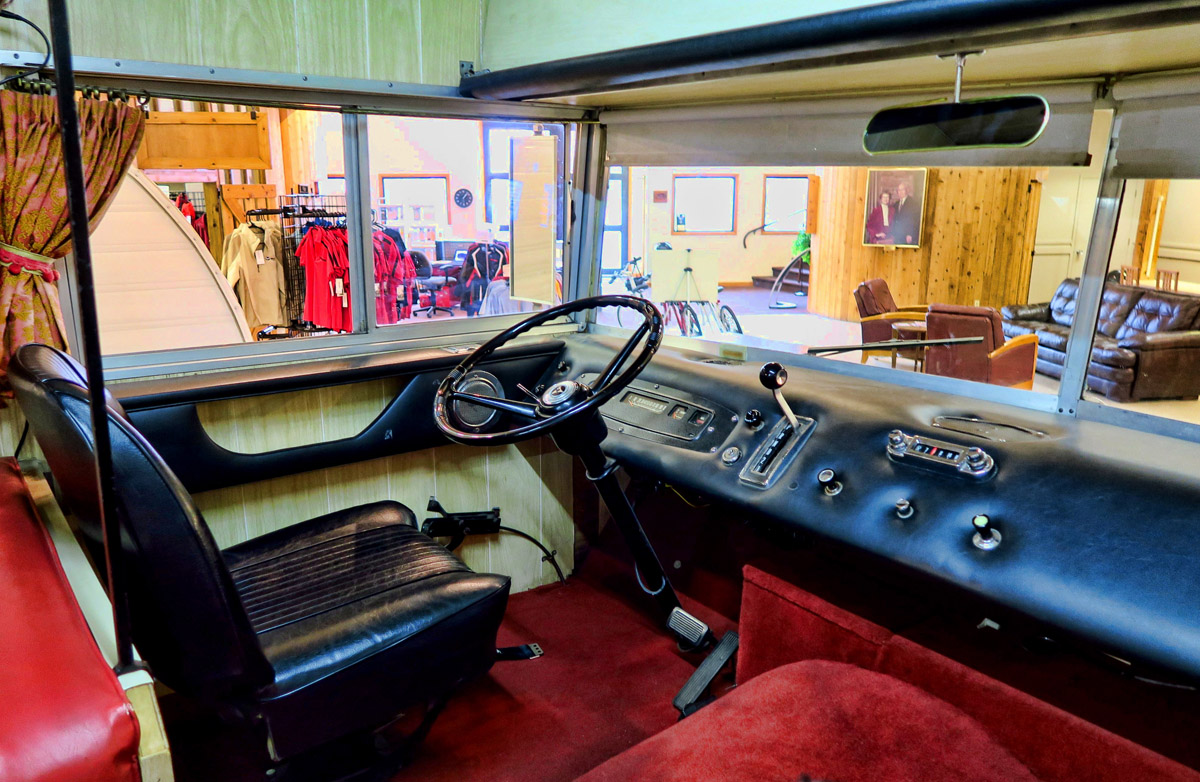 I love all the pre-safety feature window space! 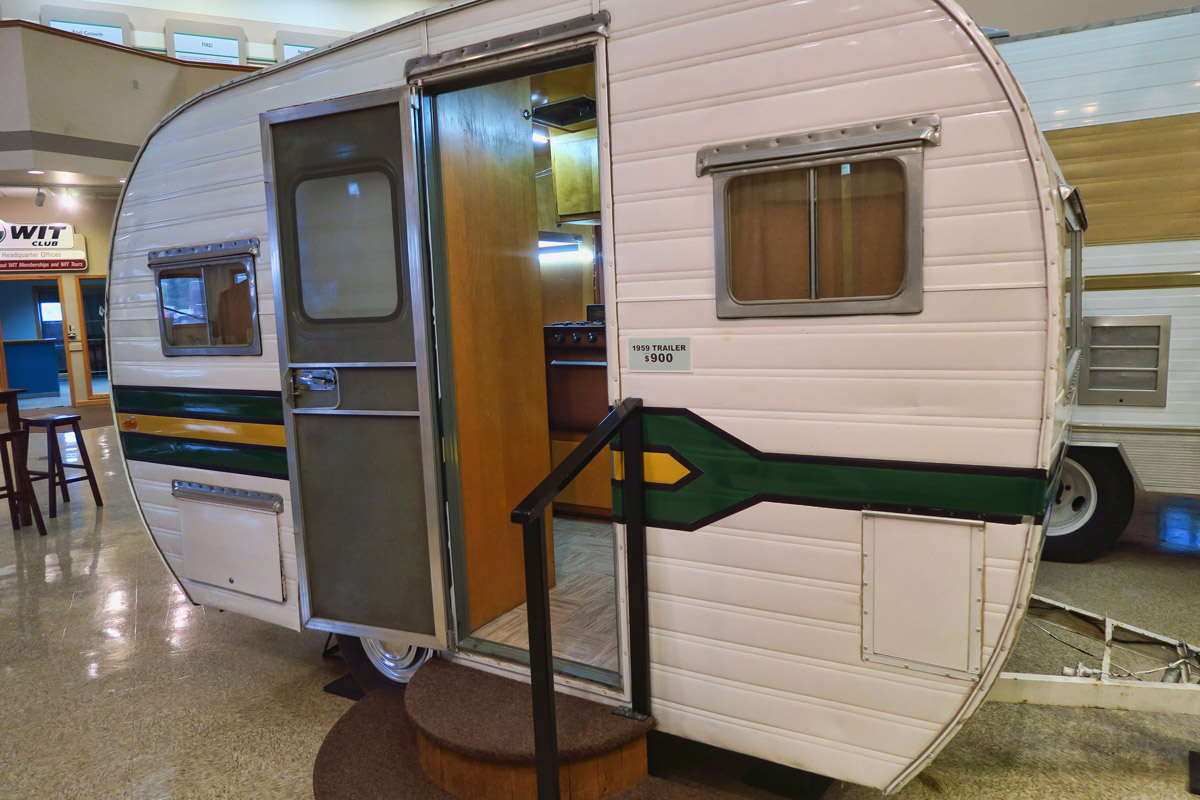 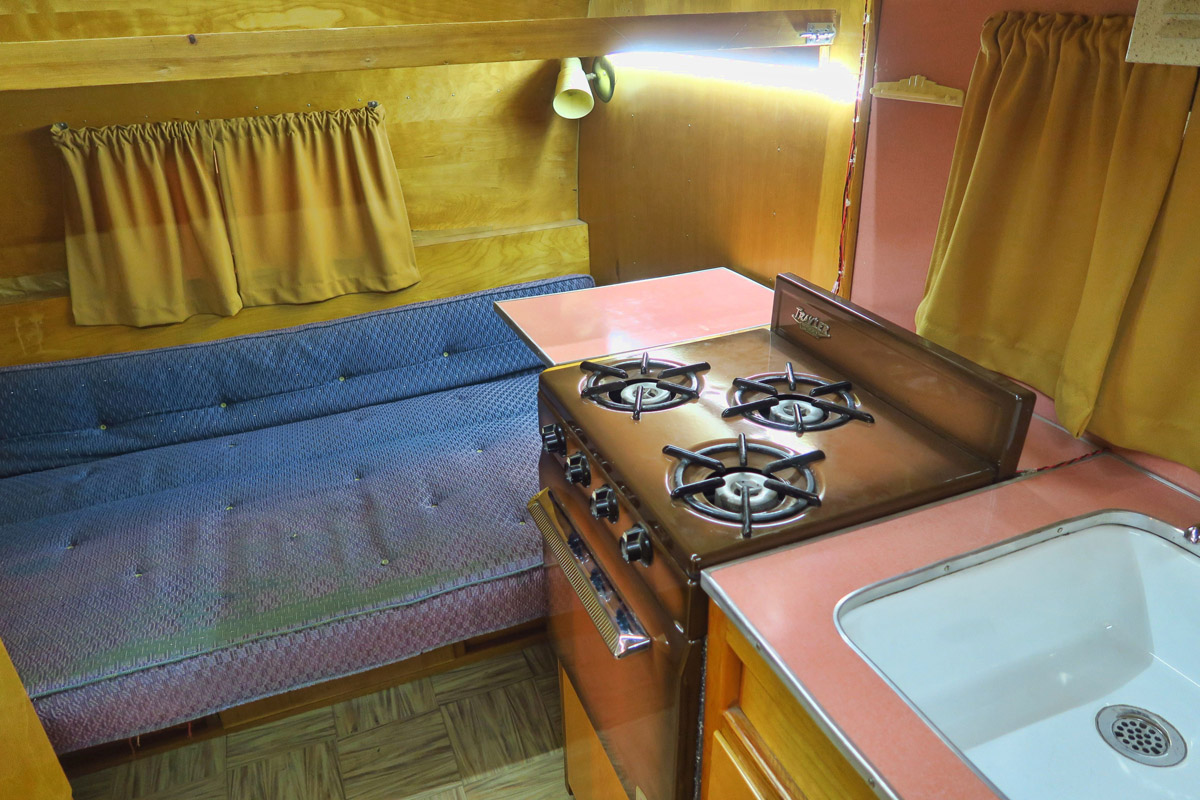 Another aspect that troubles me is seeing how many RVs are actually coming off the line. WGO produces 13 to 17 View/Navions per day. That’s one model on one chassis in one class among one brand. Imagine what this is like when you throw in the Class As, Bs, and towables. Multiply that times the number of manufacturers out there, Forest River, Jaycos, Tiffins, AirStreams, etc. and imagine how many new RVs are coming off the assembly line, just ready to “hit the road.” Yet I never hear of any political action committees or lobbyists working to increase the size of State, Federal and local campgrounds. In fact with public lands, the opposite is true. So where TH are they all going to go??? This is a problem that I don’t see anyone addressing, let alone the manufacturers who have to be soon facing critical mass. 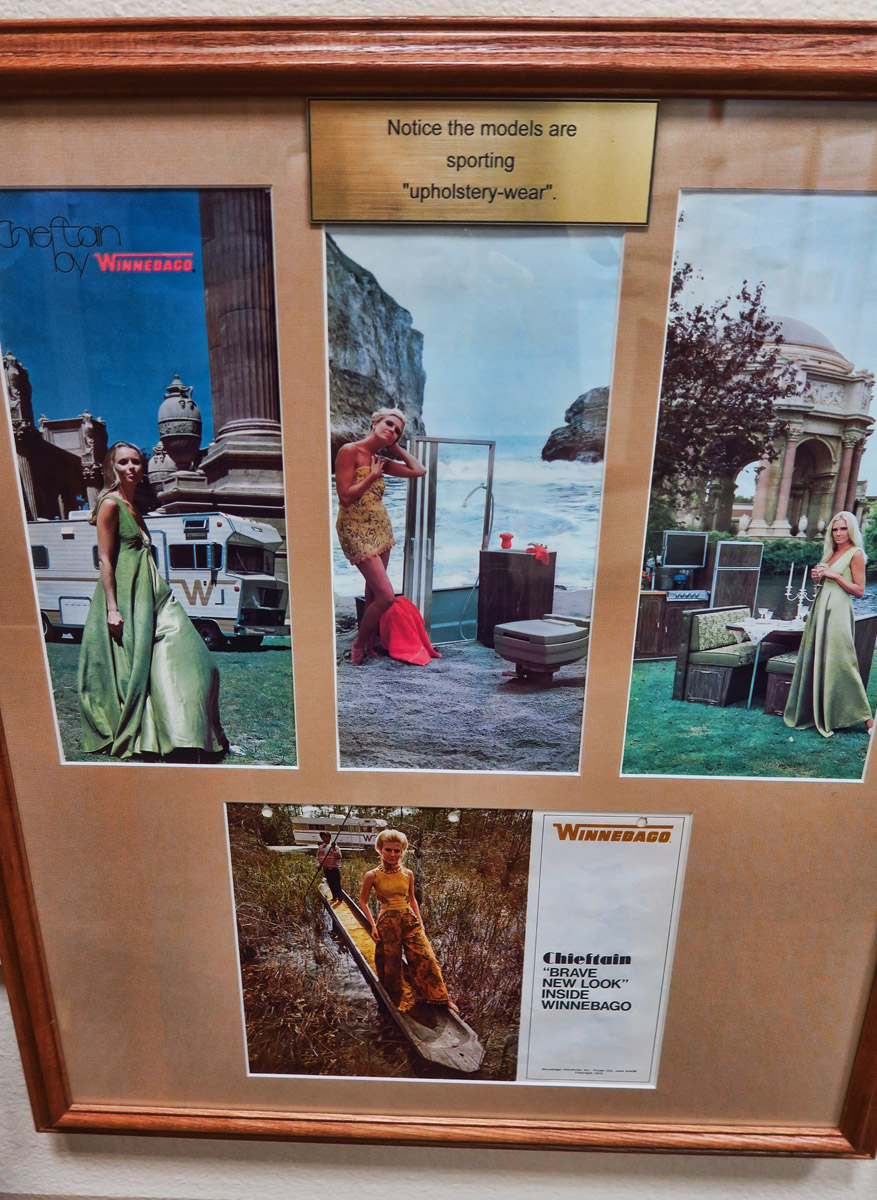 This is a hilarious marketing campaign whereby models were clothed in Winnebago’s upholstery fabric. 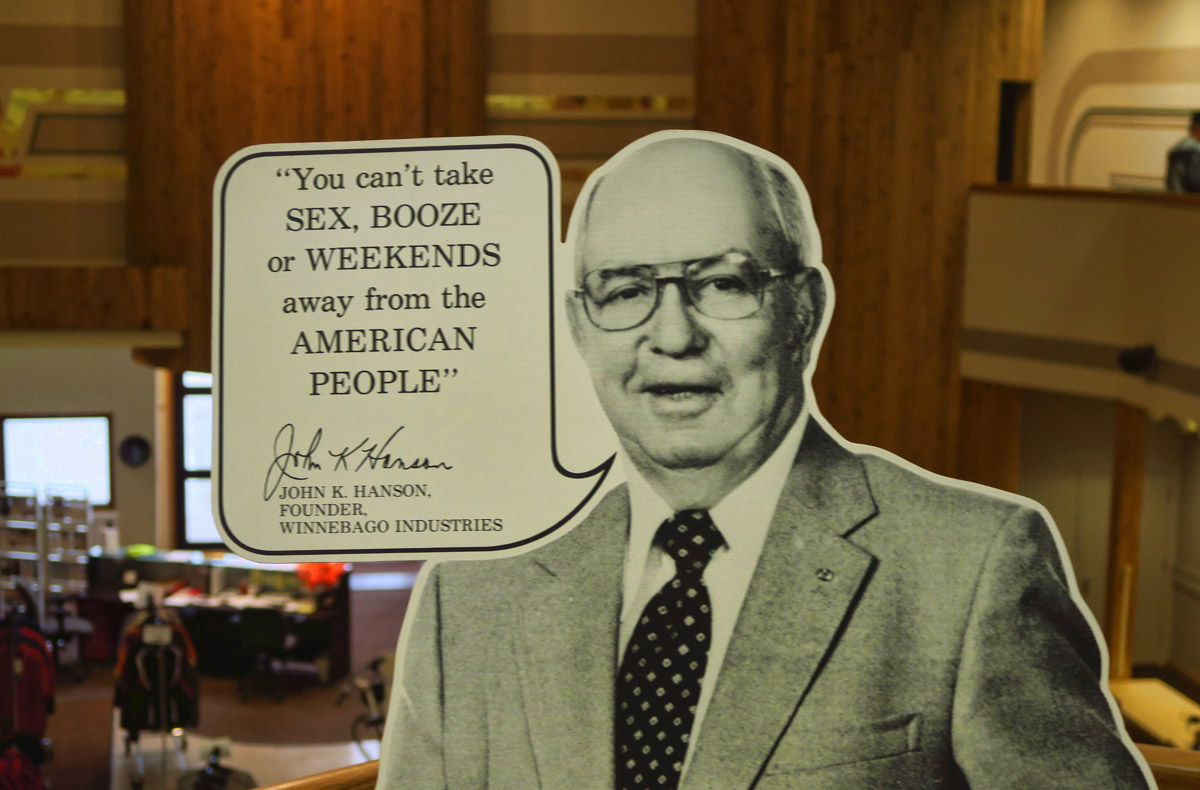 Yep. “Sex, booze, and weekends” is definitely why I bought my Winnebago home! 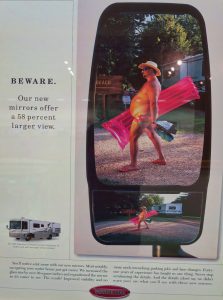 Before “fat-shaming” was a thing…

Having now fulfilled my own personal reasons for visiting what is my 49th state, that leaves one more to go….

17 thoughts on “On to the Real Reason I Visited Iowa”