As I approached Capitol Reef National Park at the end of October, our country approached one of the most significant yet divisive mid-term elections in my lifetime. In the weeks leading up to Election Day, my addiction to news had reached toxic proportions. Once content with a few headlines at the end of the day, followed by a few laughs compliments of Stephen Colbert, I had now turned into an insatiable political junkie with a 3-4 hour per day habit. 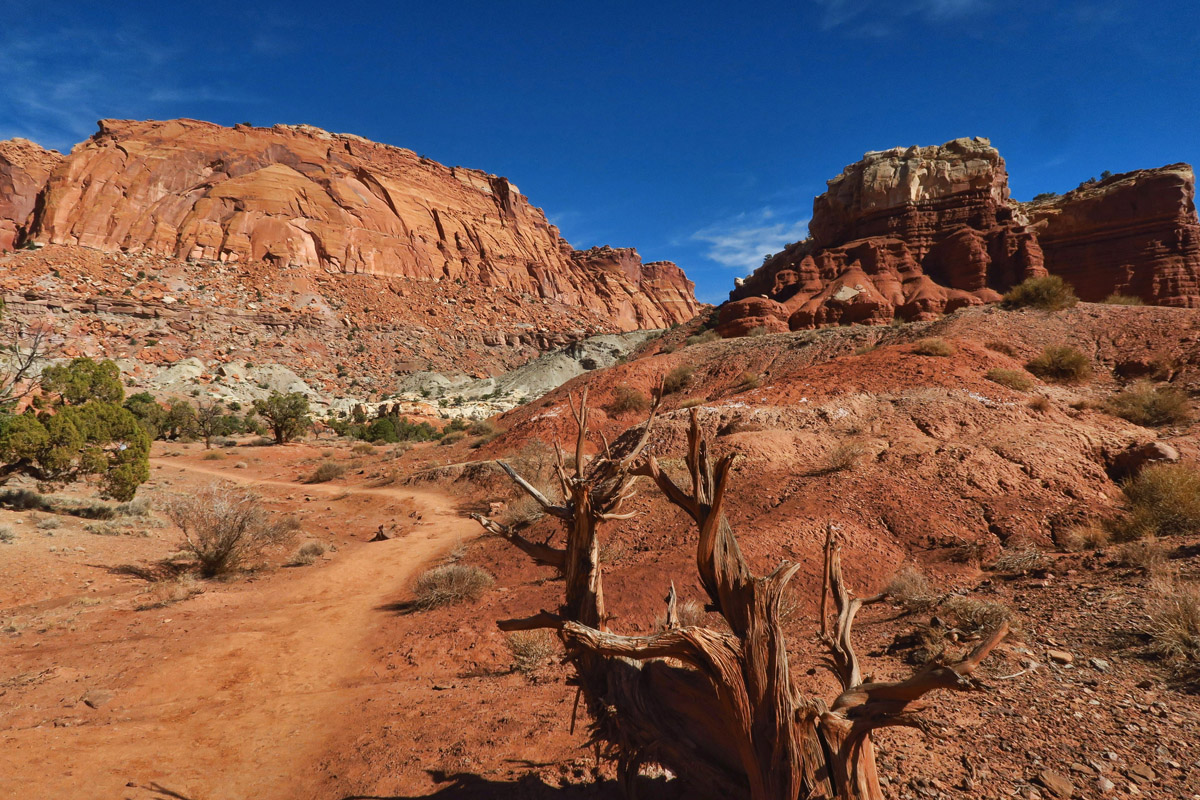 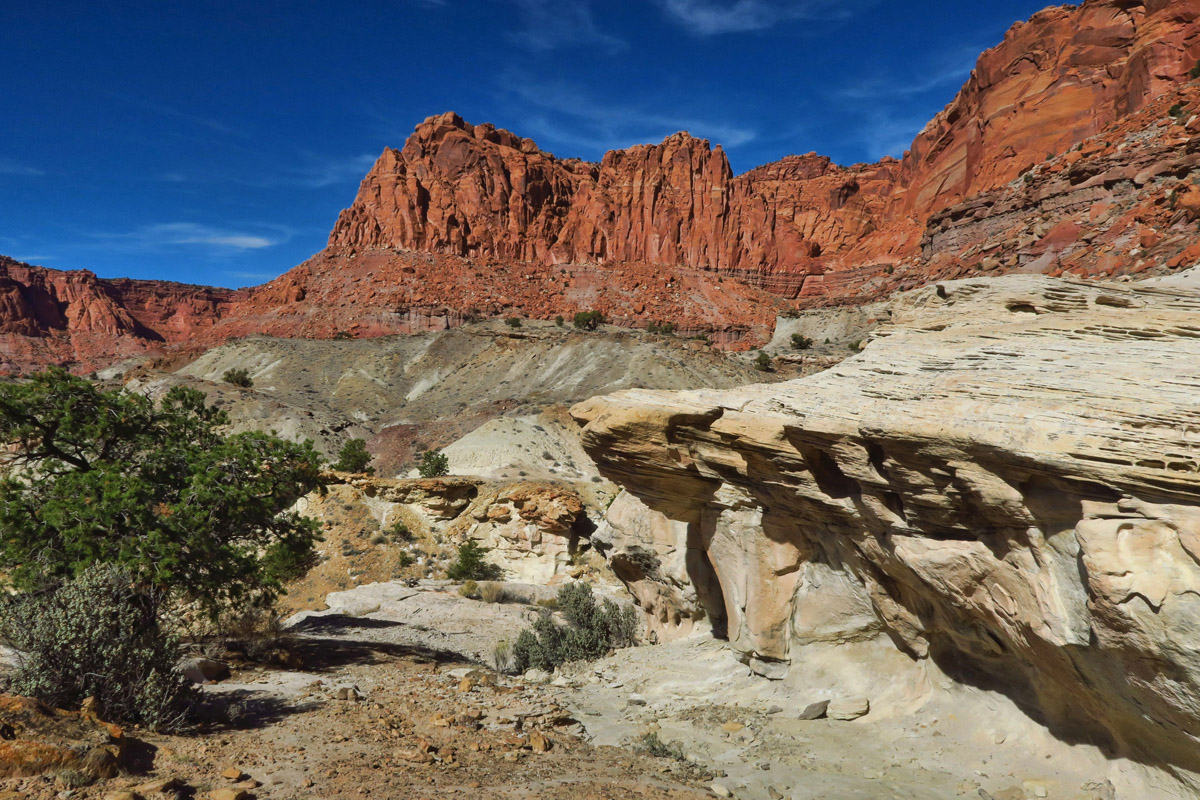 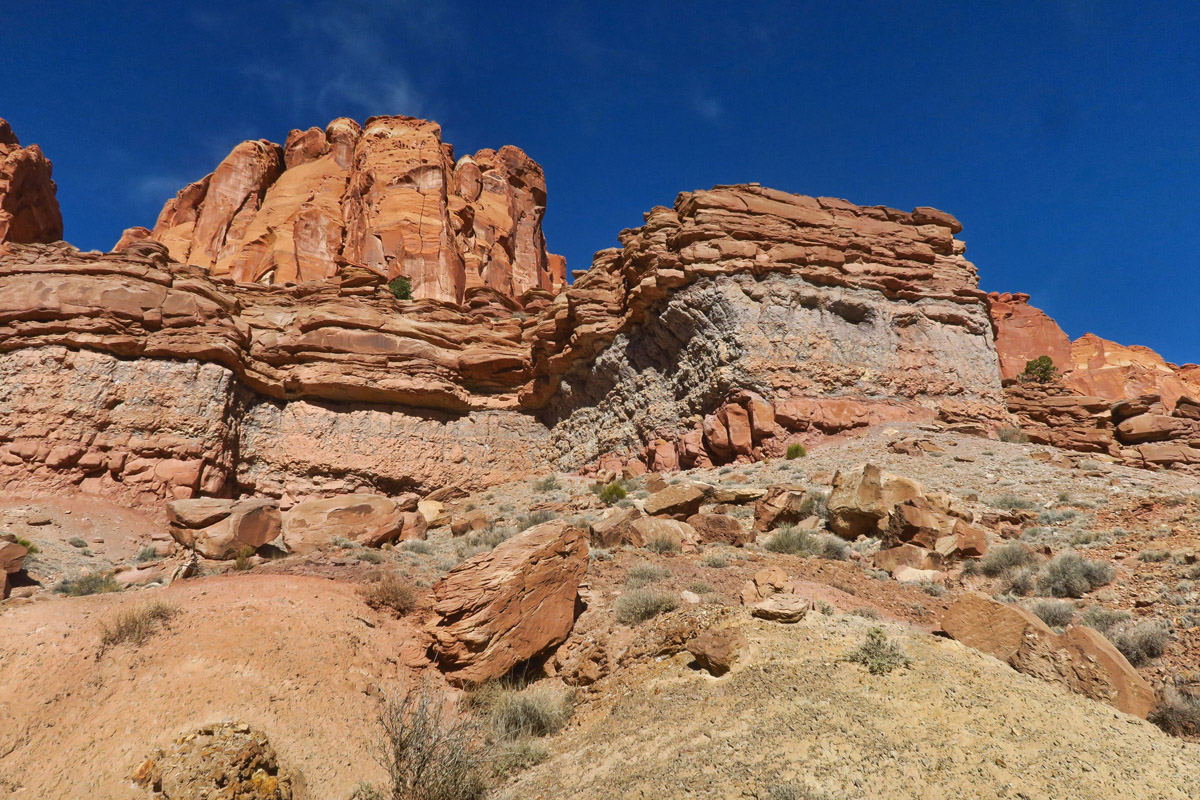 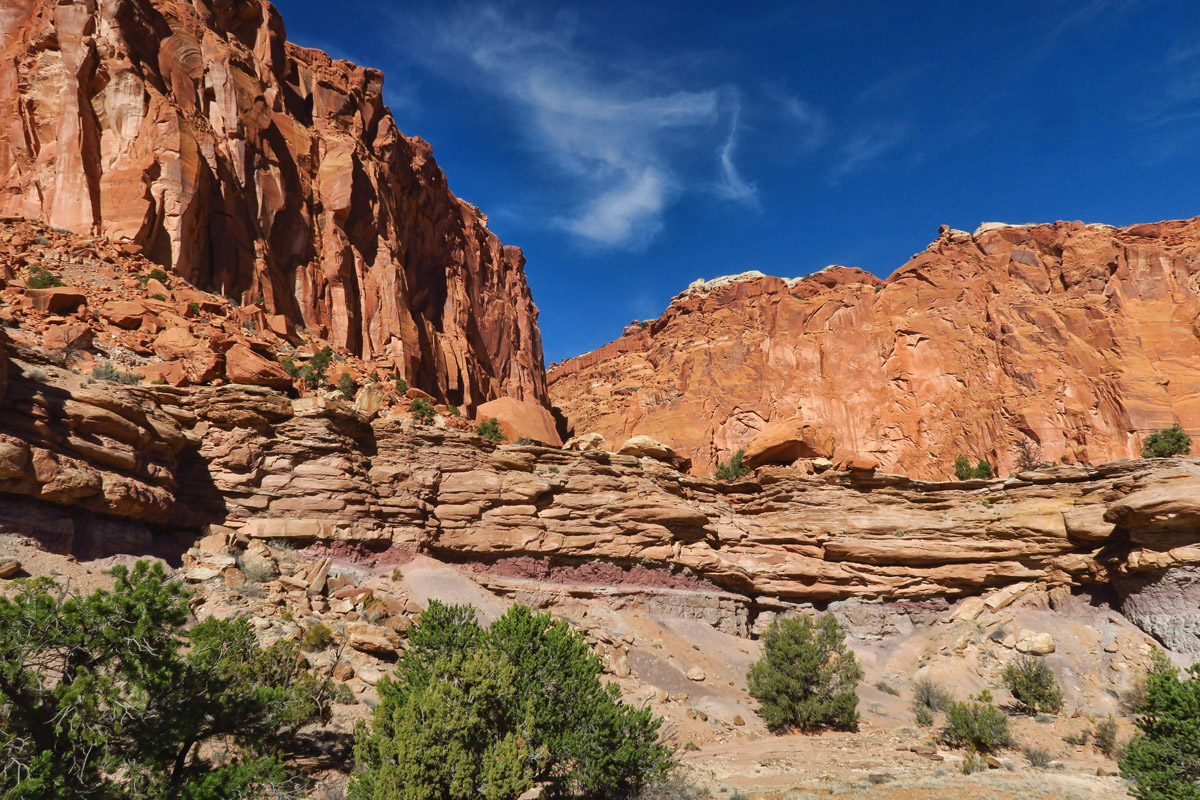 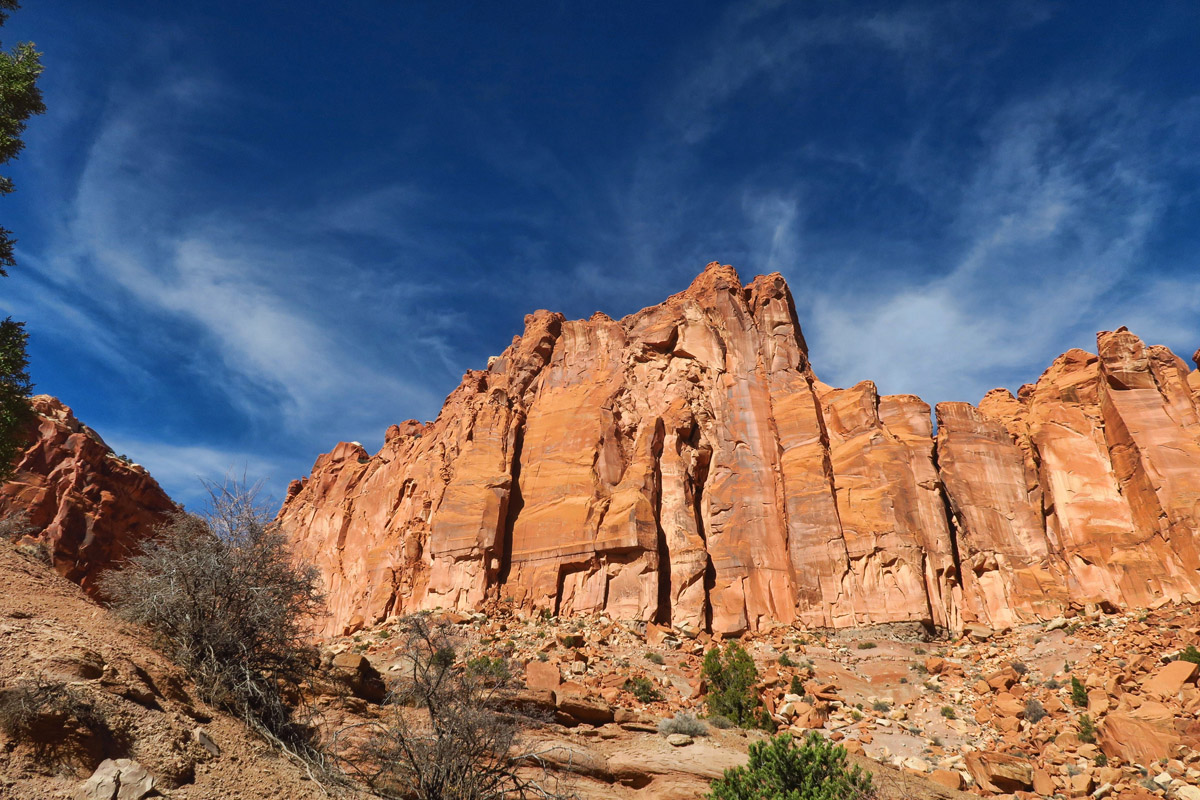 It started first thing in the morning with my daily dose of youtube. I’d take a break mid-day to get outdoors, but always with one eye on Twitter to see what I’d missed while away from the laptop. By sundown, I was not able to stop myself from live streaming entire news shows. I need to clarify, this is NOT my NORM! The pundits had become my pushers, as I felt dragged down the red versus blue rabbit hole. No better time for a detox than the lead-up to the midterms! 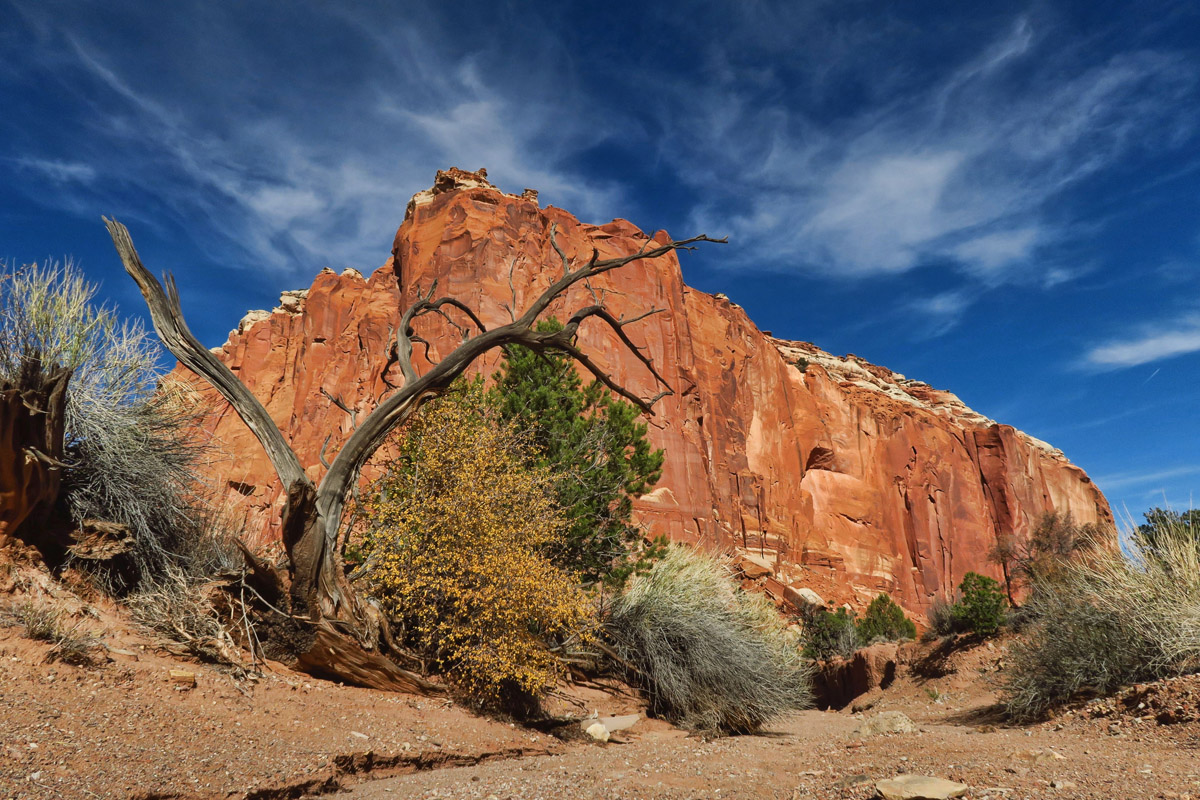 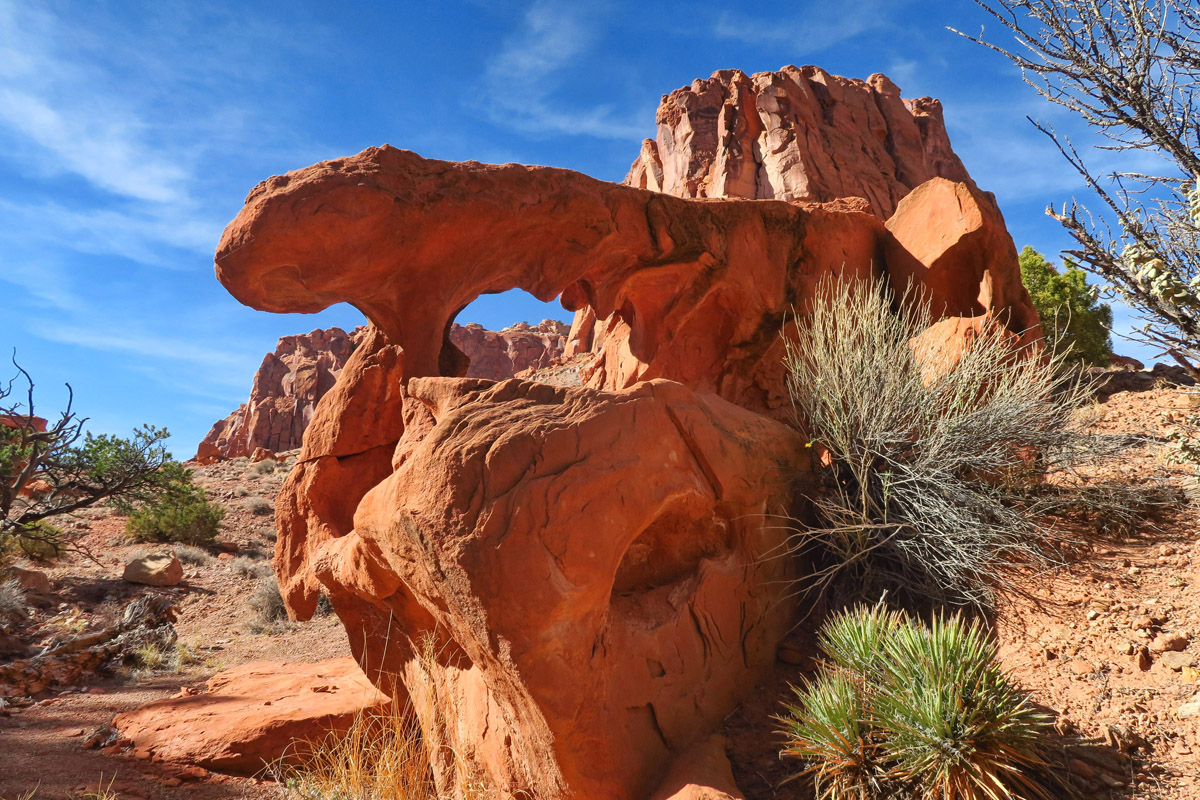 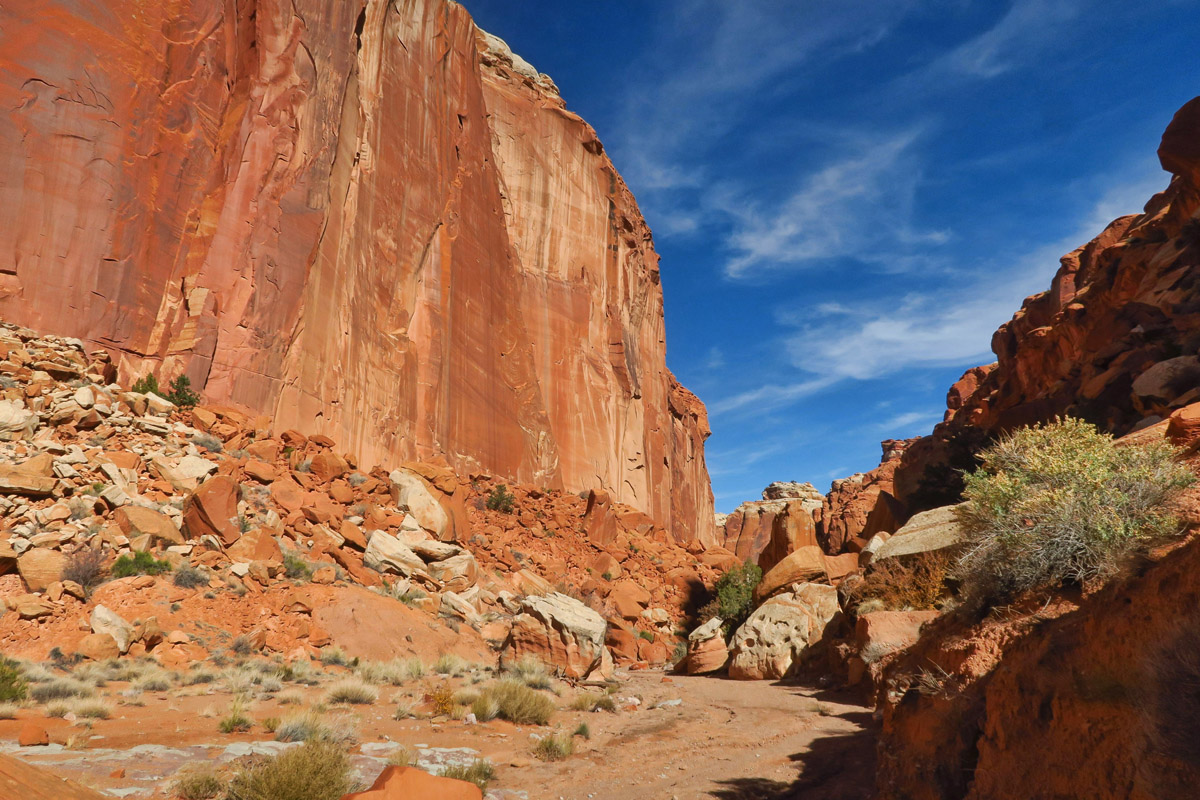 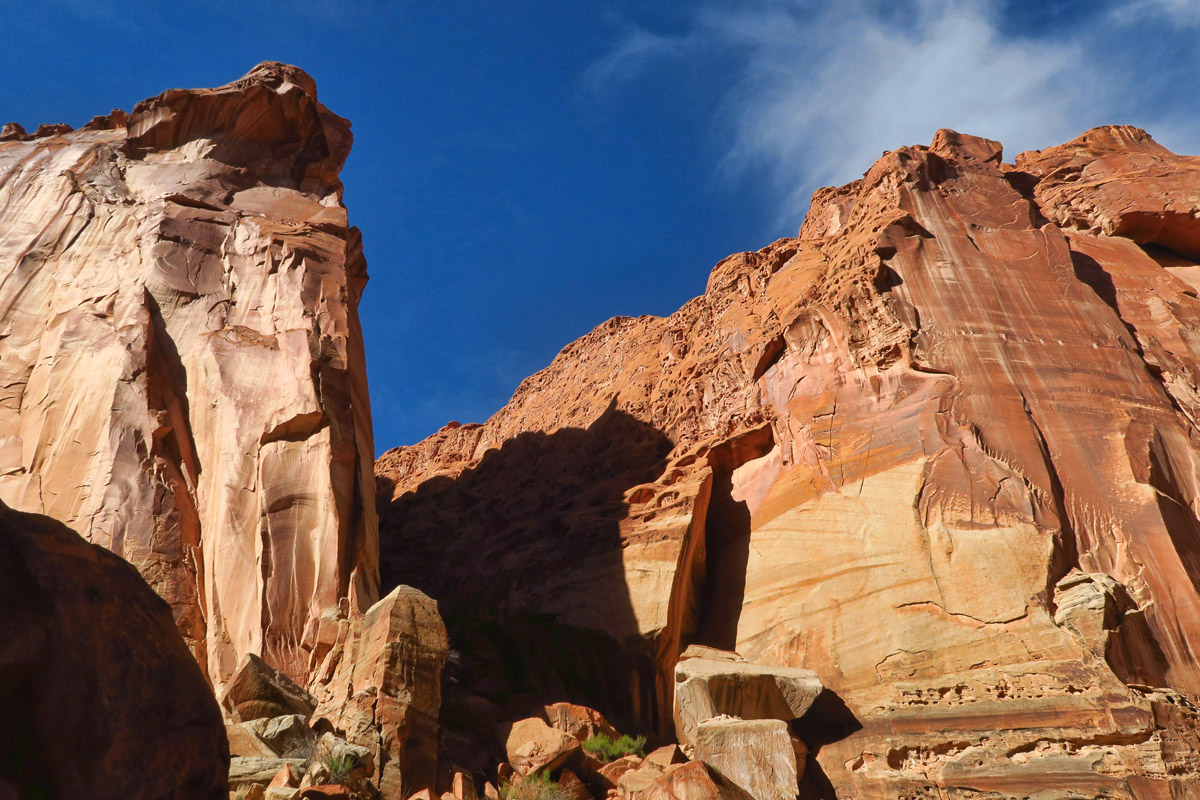 When I booked my nine days in the Fruita Campground inside Capitol Reef National Park, (heads up to those who may not know, Fruita is no longer first come/first served. This is its first year on the recreation.gov system.) I was thinking more about the close proximity to hikes and less about whether I could get connected. Back in 2014, I had good AT&T reception from the boondocking location, but that was a 20 mile RT drive just to reach the entrance to the park. As the little Tracker increases in age, I do what I can to minimize the mileage, so I decide I can do with a little less connectivity. Admittedly, I could use the detox, so I resolve to drive into town every couple of days to check in.

Once I settle into the Fruita Campground and overcome the symptoms from cold turkey withdrawal, I am amazed at how quickly my mood lifts just by being isolated from the steady influx of political toxicity. There’s a reason why the old adage, “Ignorance is Bliss” came to be. It only takes a couple of days and as many hikes until my blissful state is restored. 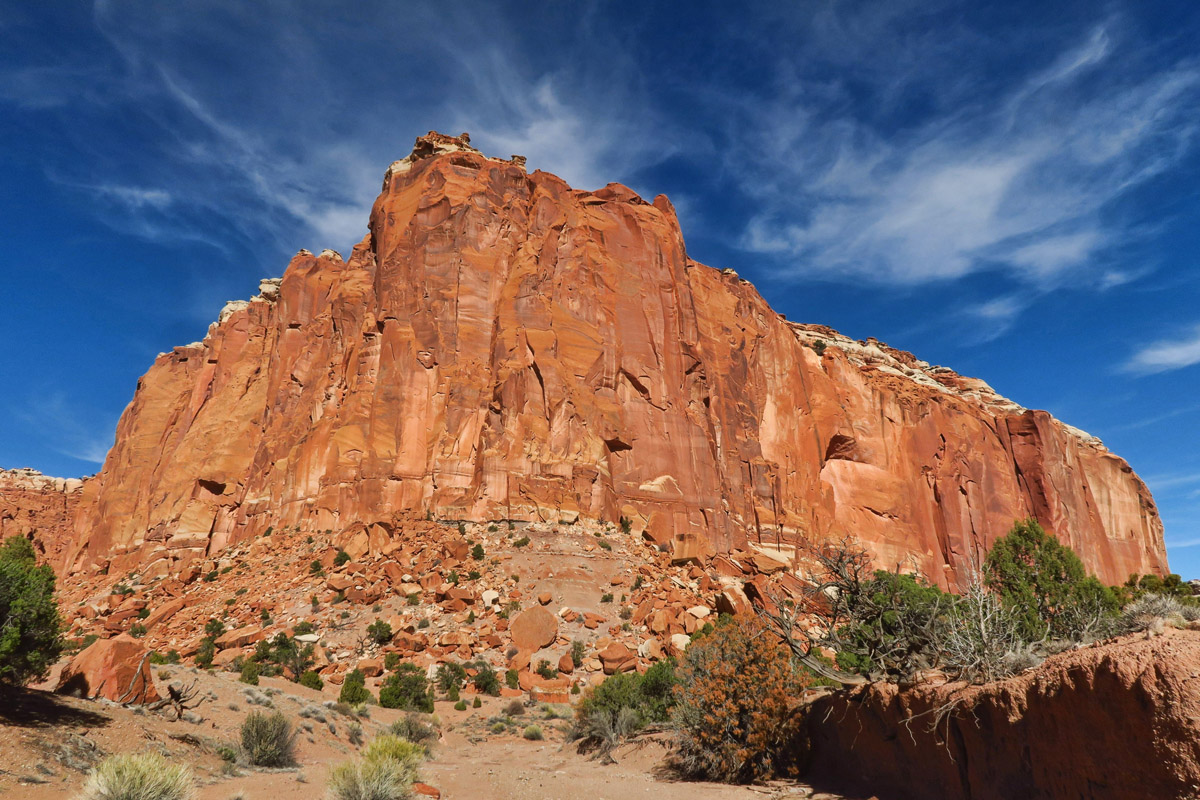 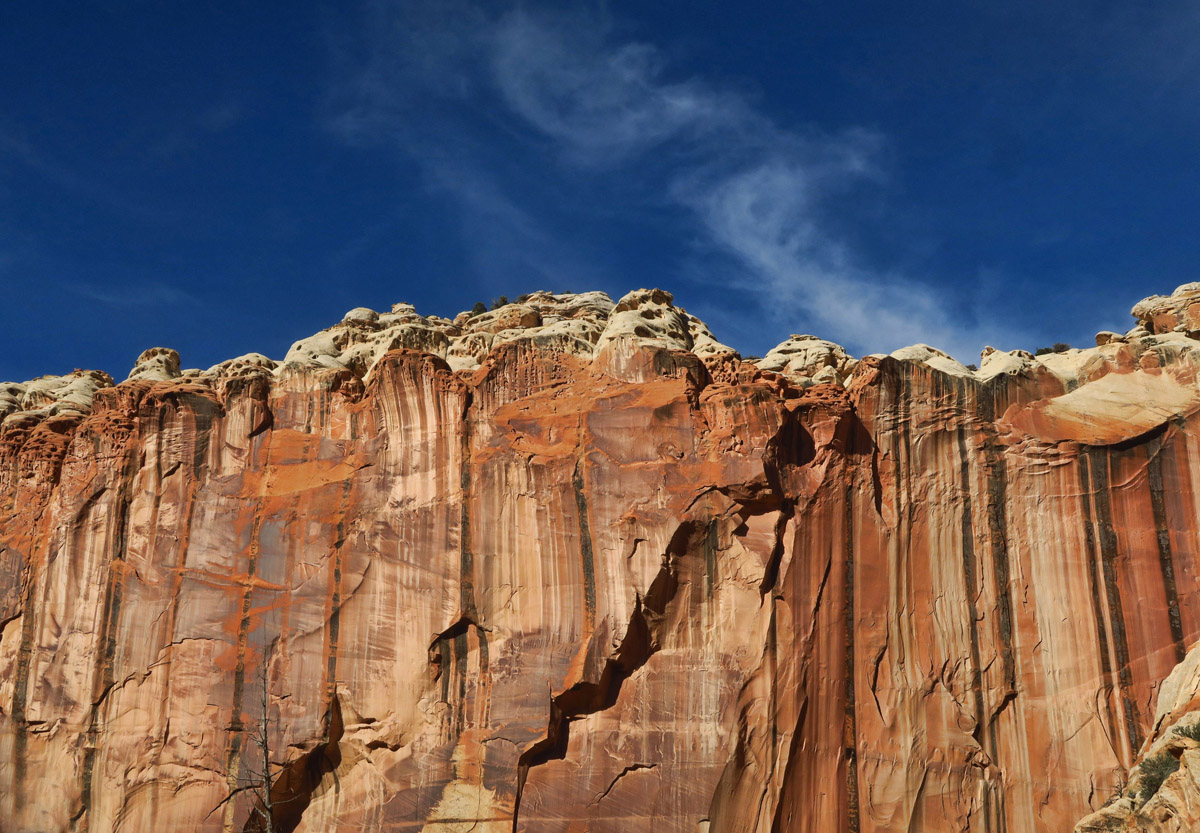 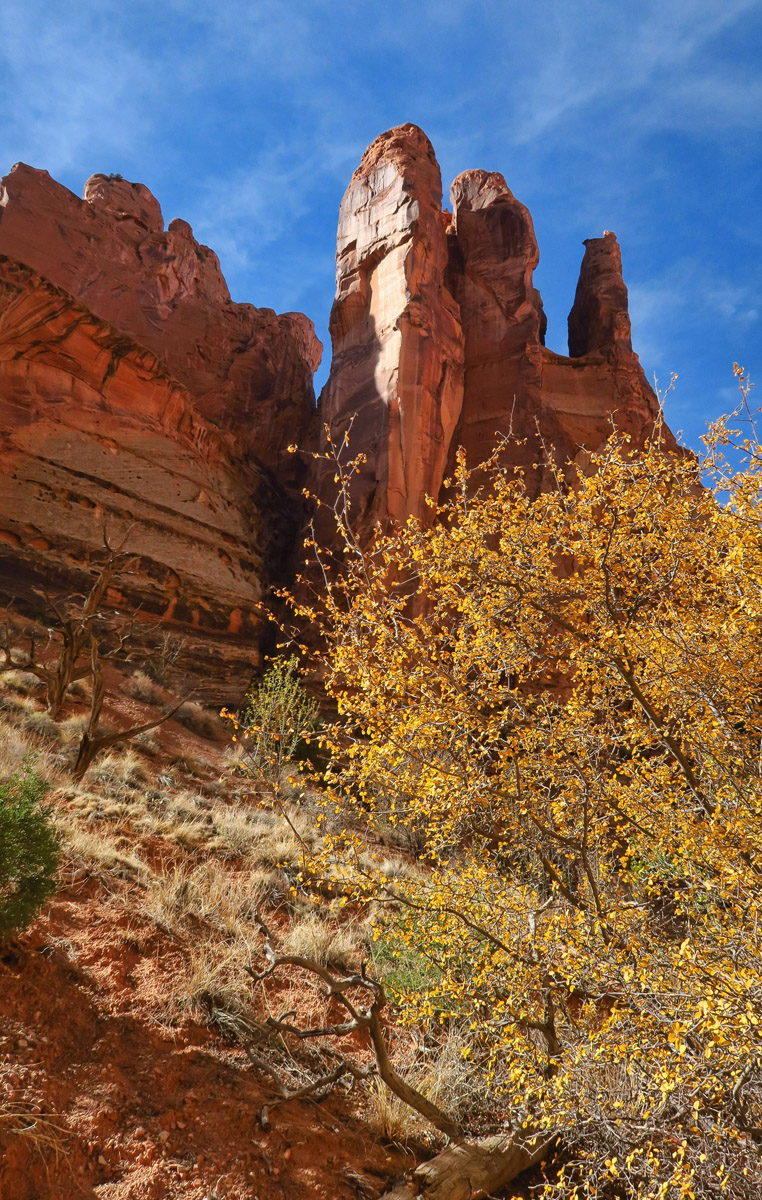 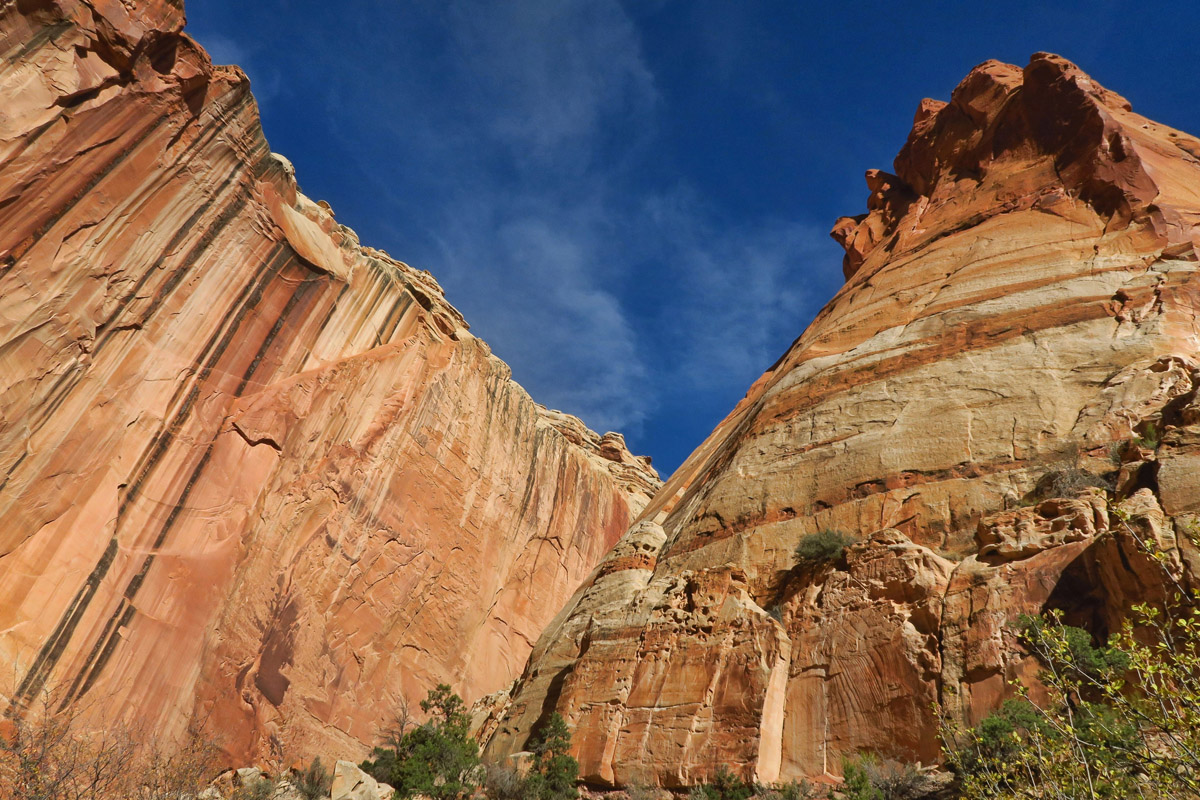 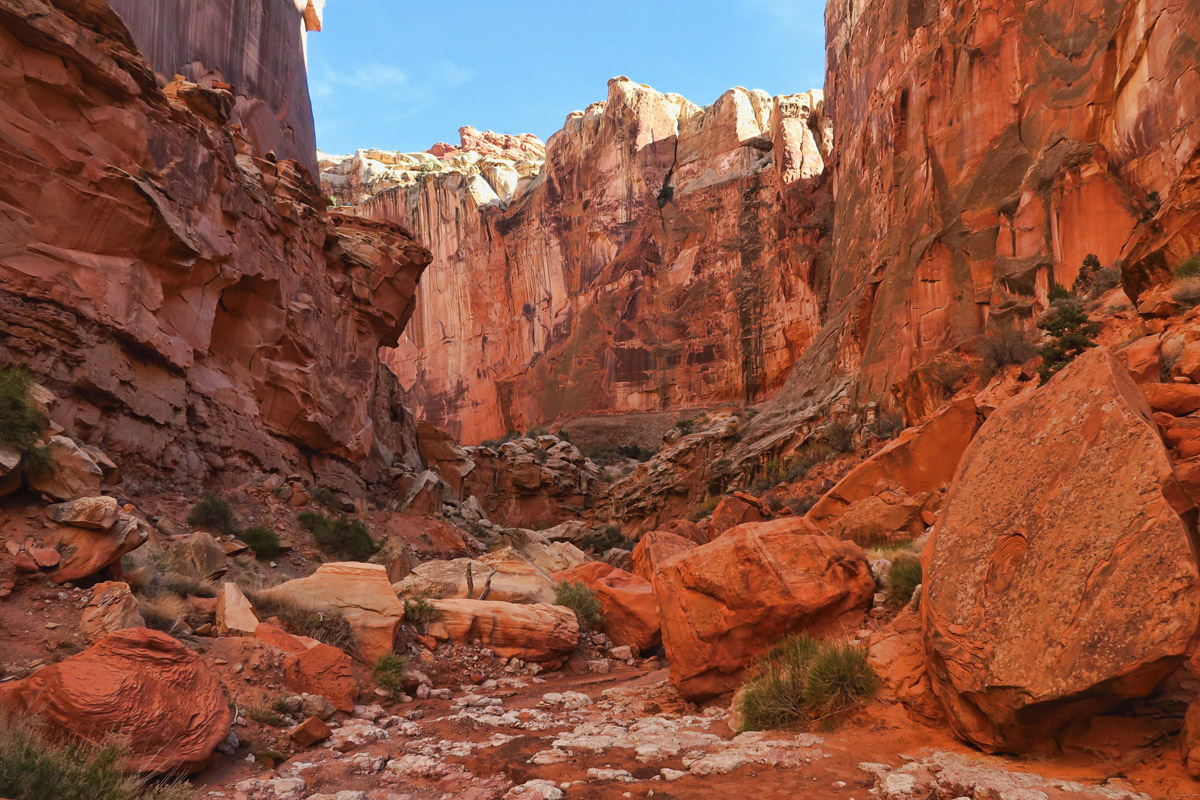 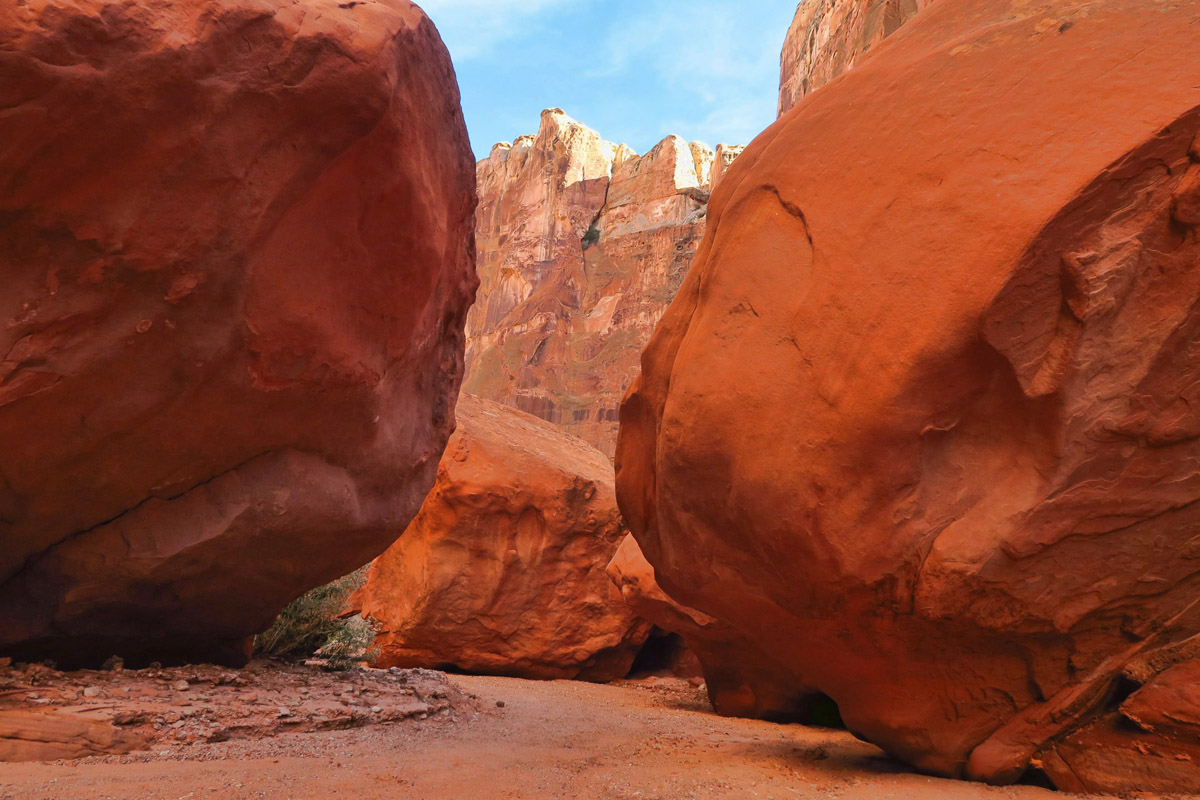 But then, who could be in a bad mood on a hike like Lower Spring Canyon? I did this hike back in 2014, and it still ranks as one of my favorite hikes of all time. Starting out on the back half of the Chimney Rock loop which leads into the canyon, the anticipation is like walking to the theater to see a show you know is going to be great! It’s a little over a mile before the canyon walls narrow and I feel enveloped by the radiant warmth of the towering red walls. The luminosity of the chiseled angles reflects light in all directions. The varnished rock faces glow such a deep umber in the bright sun against the deep cobalt blue sky that they almost appear like giant blocks of glistening dark chocolate, the whimsical clouds on this day, whipped cream. 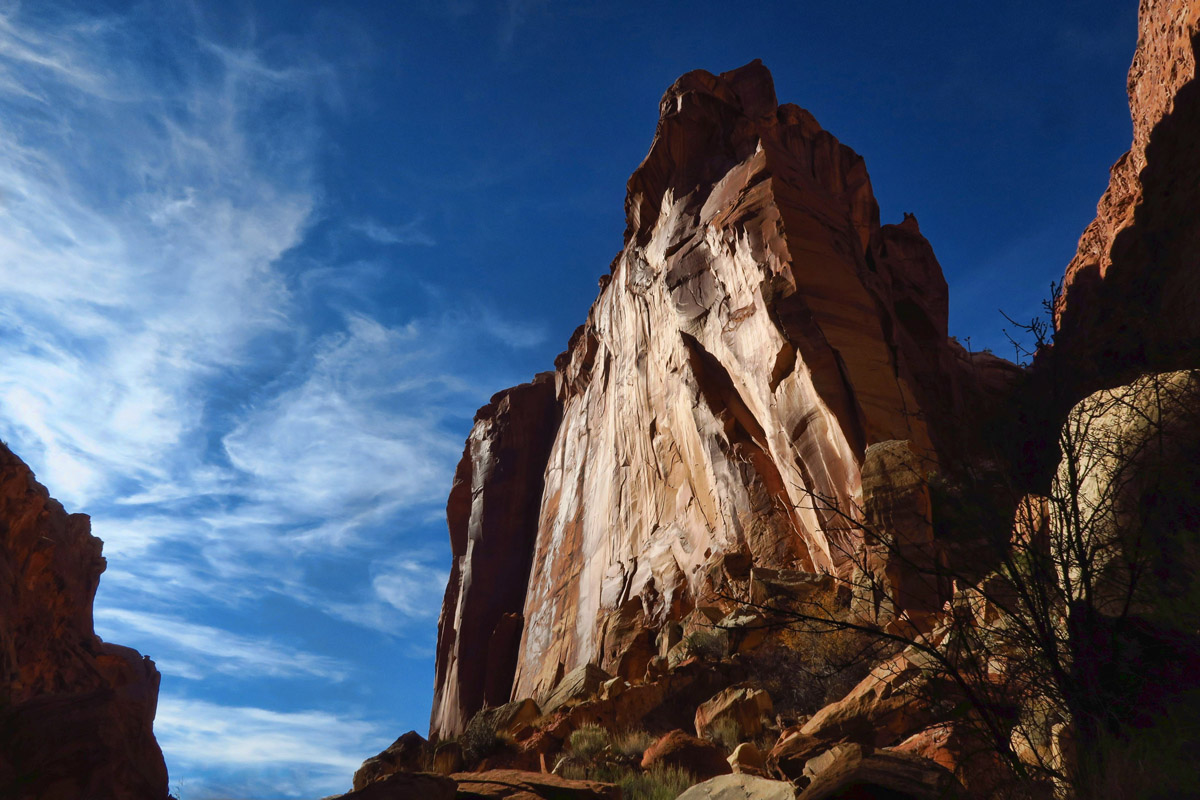 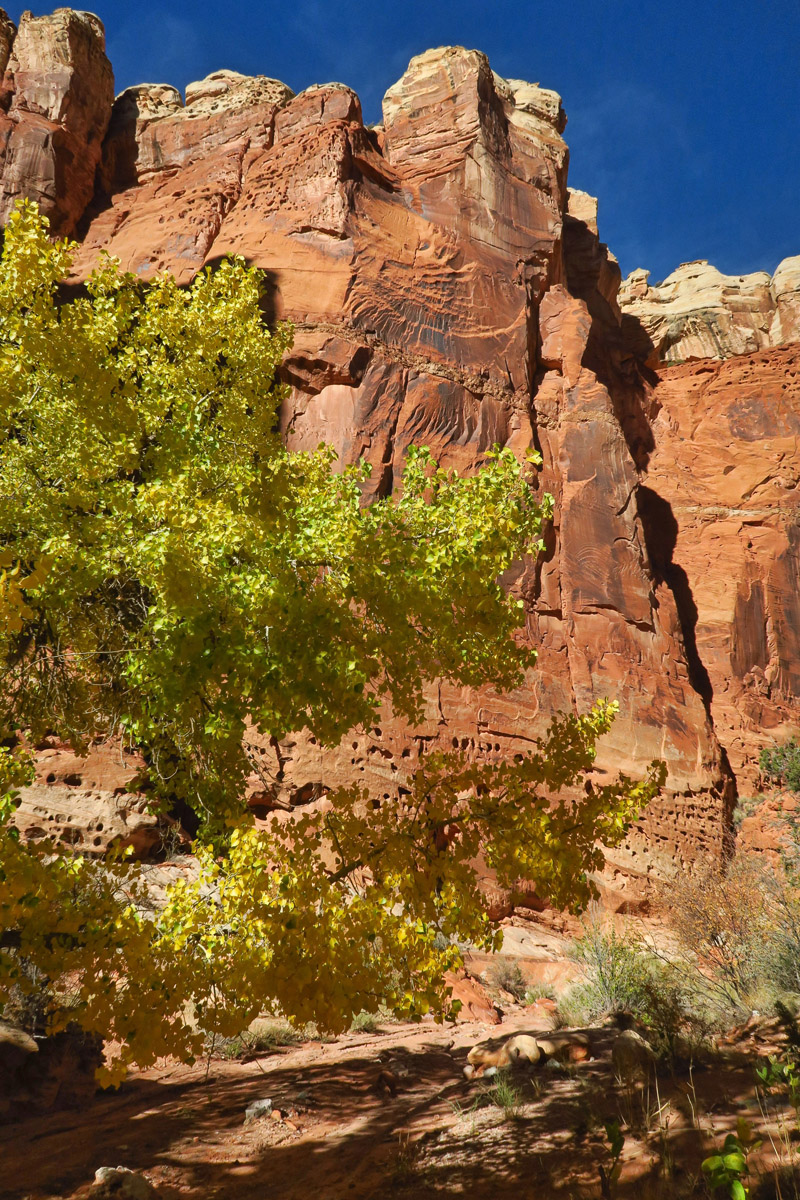 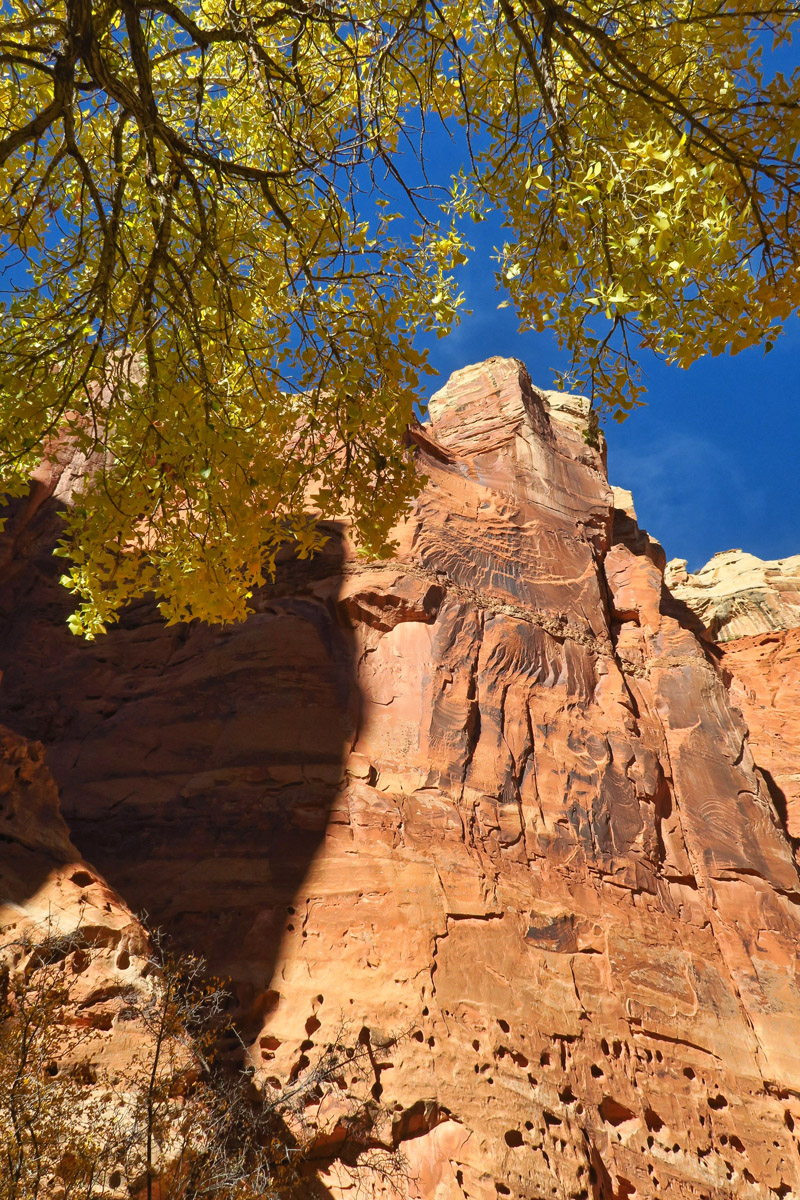 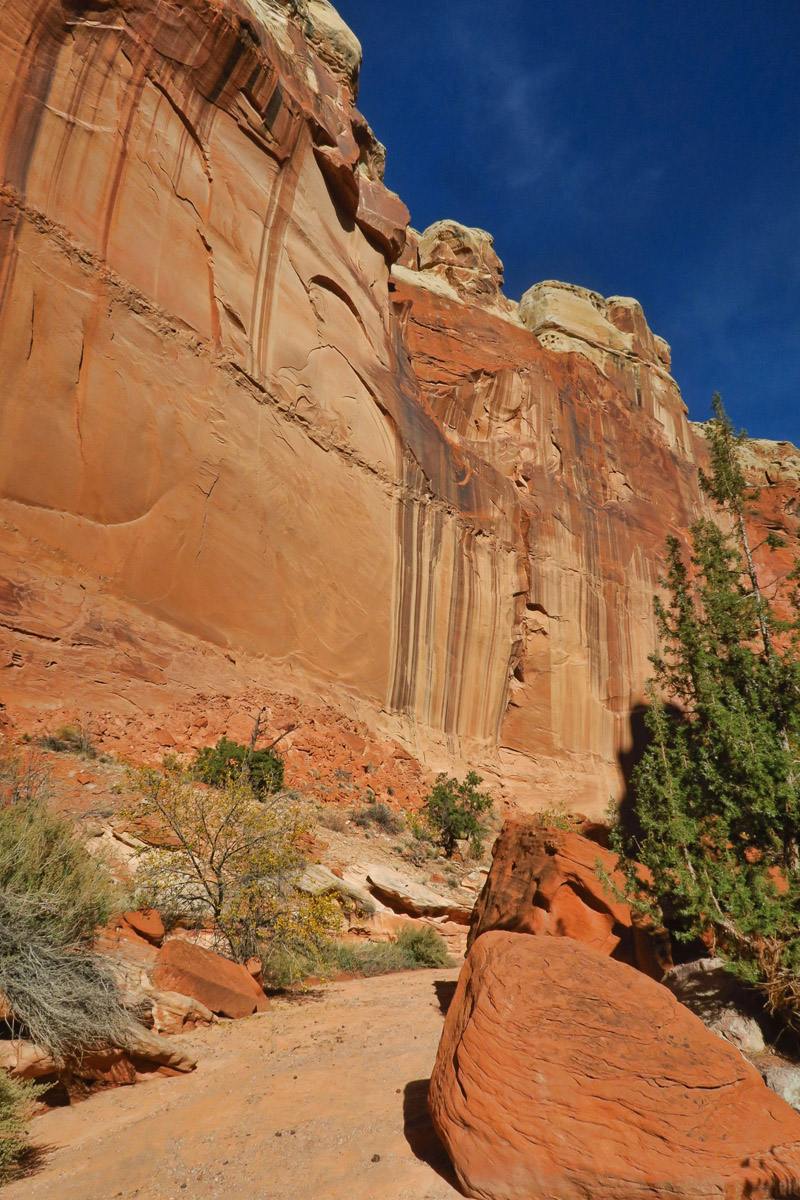 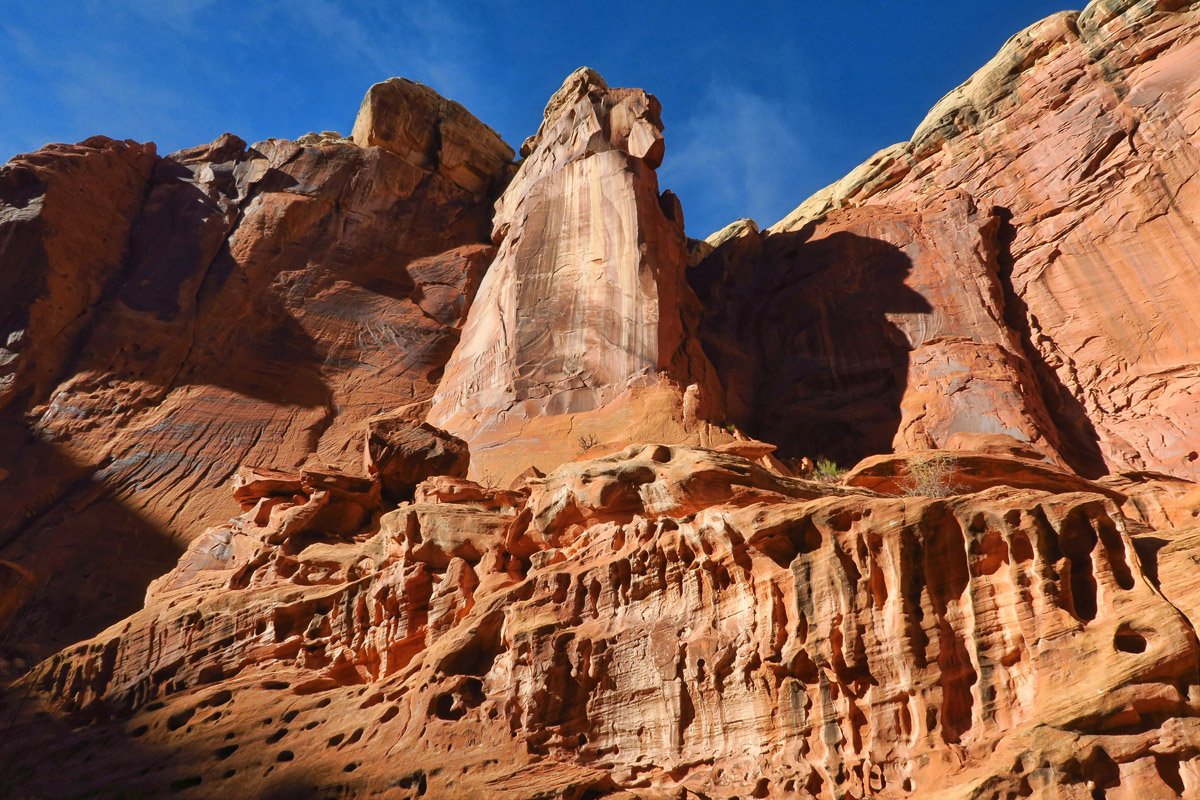 I encounter a total of four people on this trail, and I stop for a lengthy, meaningful conversation with each of them. I rarely emit more than a casual “hello” in passing on the trail. Maybe I’ll return a “Perfect day!” in response if the other person makes a comment about the weather, but rarely more than a couple of words. I am not sure the reason for the lengthy conversations today. I’m just glad none of them involve politics. Maybe it’s because I am in an exceptionally good mood. Or it could be the intimate nature of the narrow canyon that makes for equally intimate conversations. But I stop and enjoy a chat with them all. 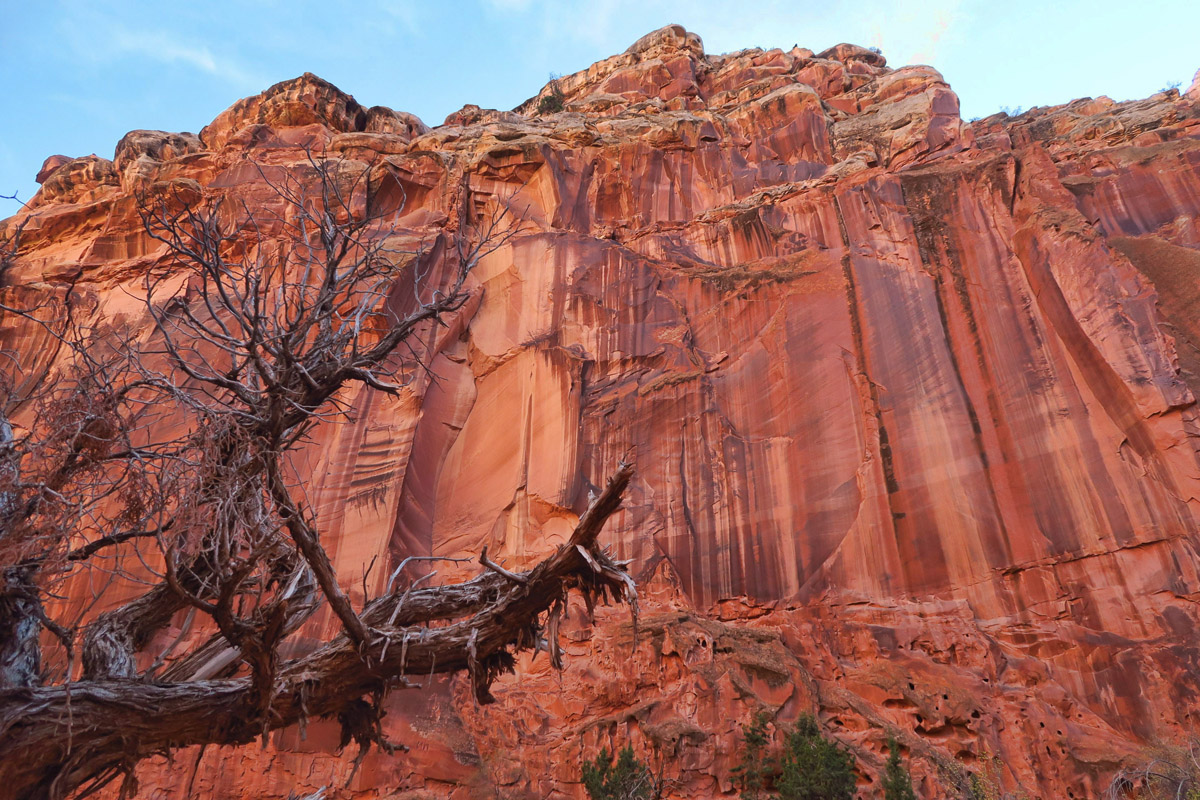 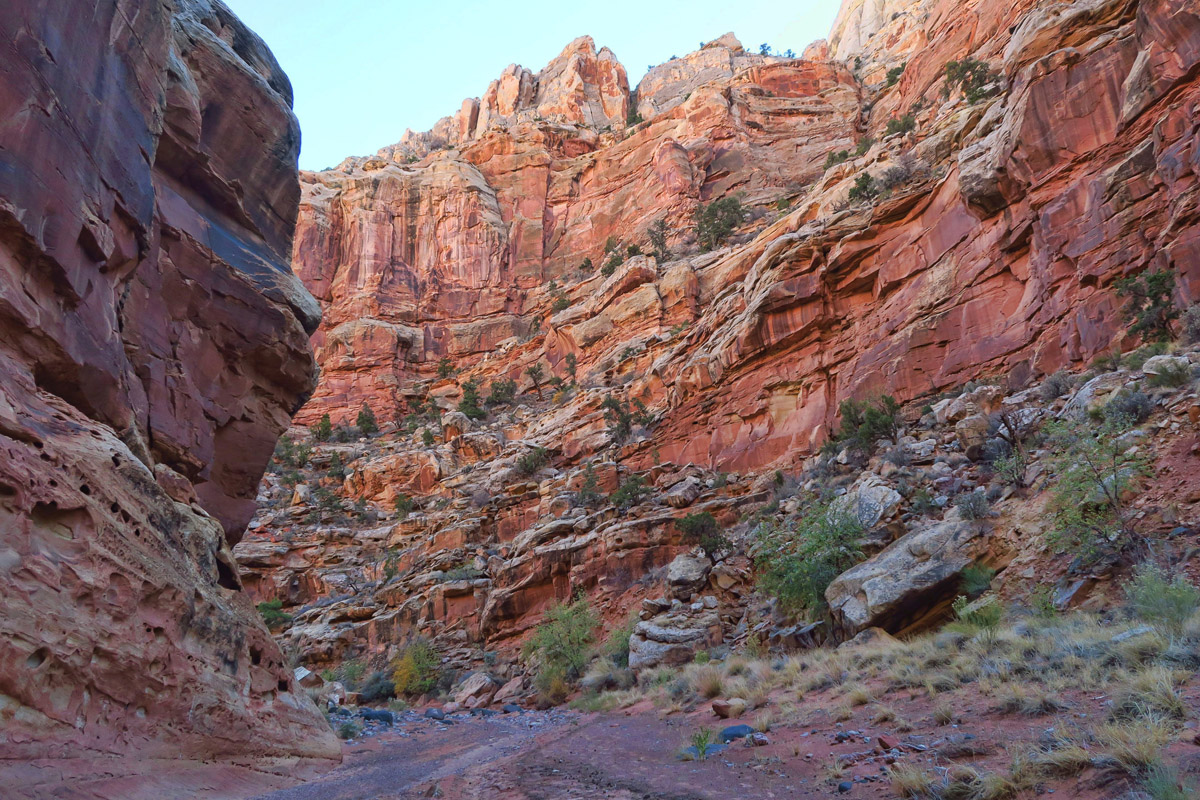 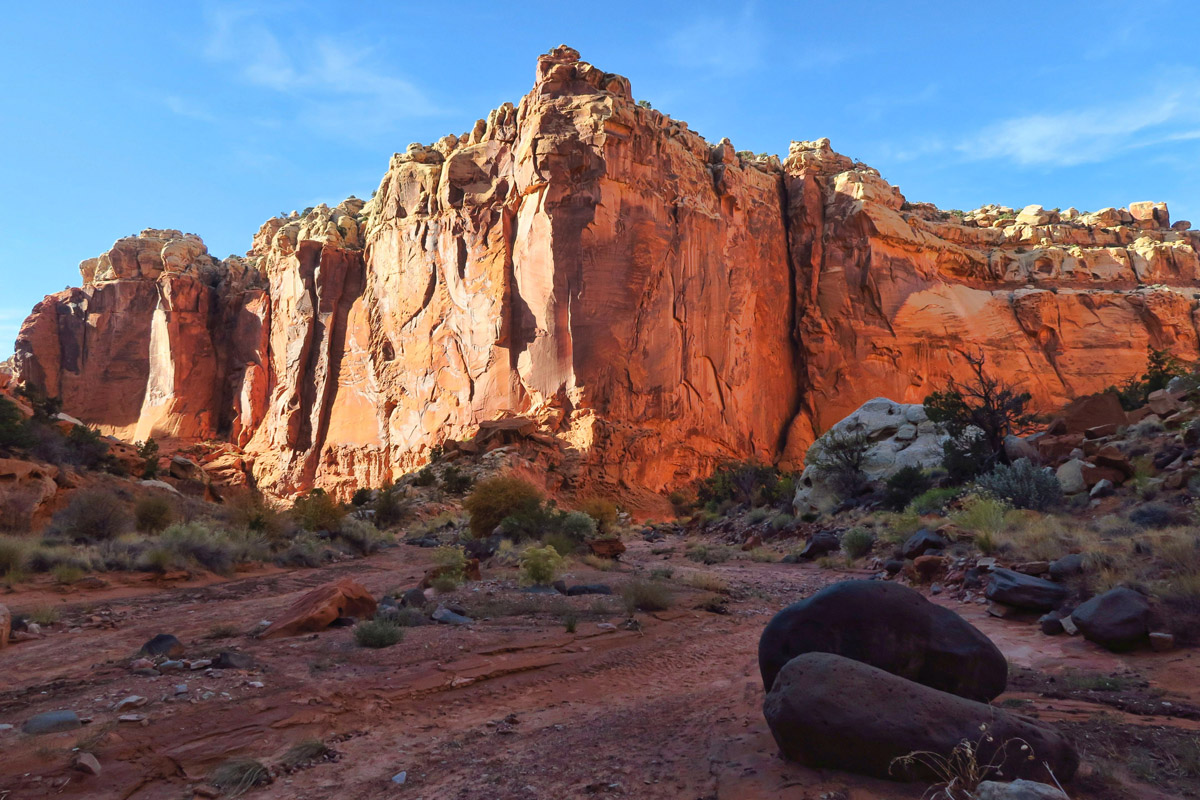 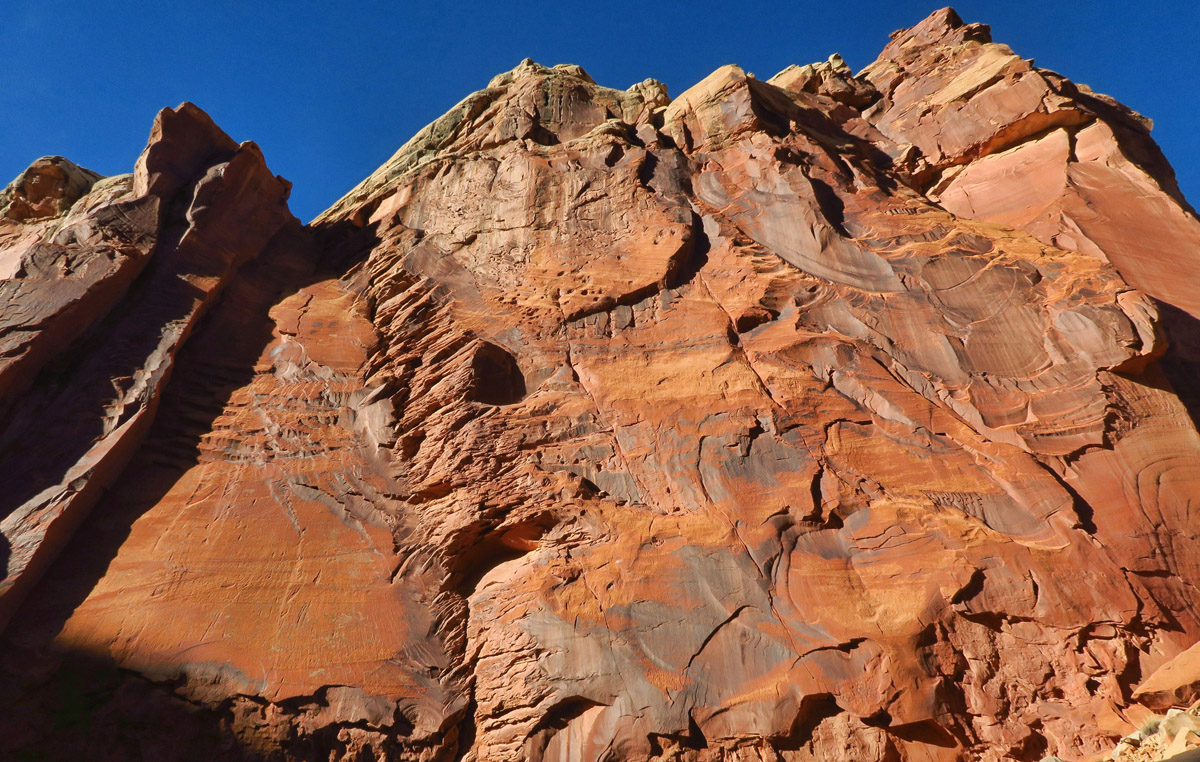 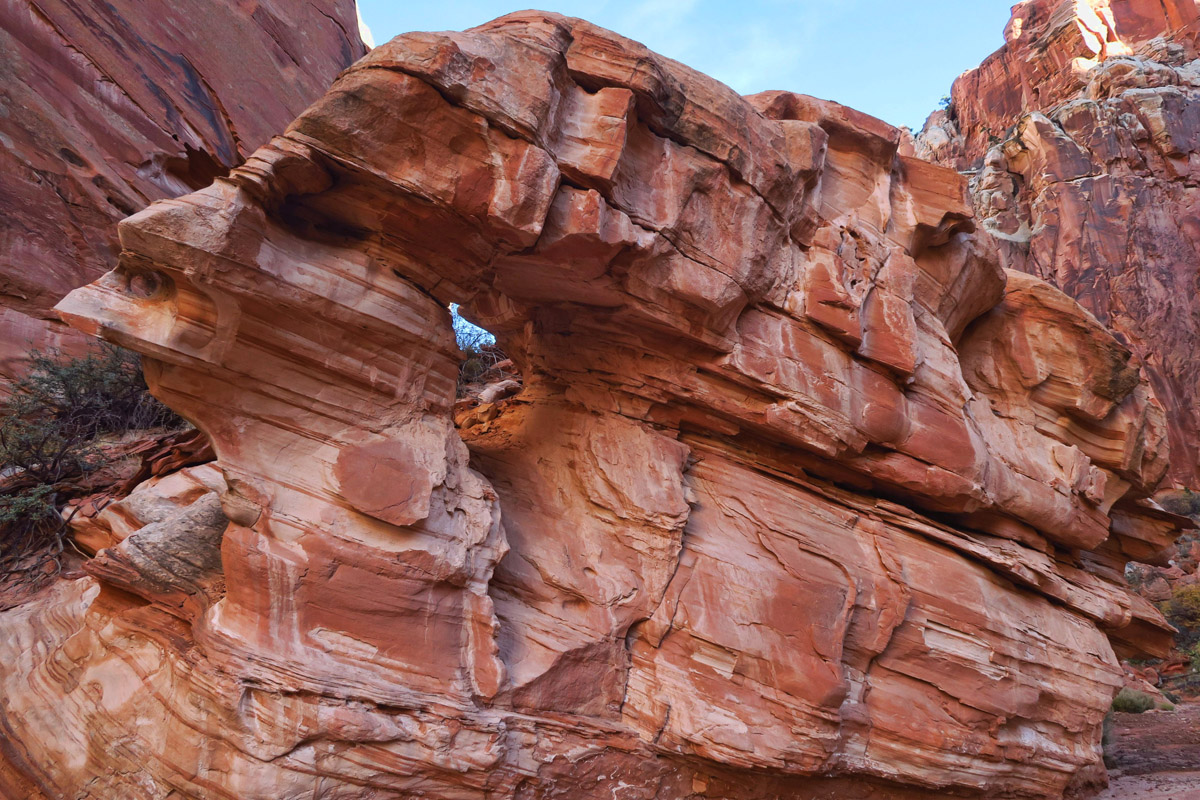 One man tells me this is his favorite hike because it’s impossible for him to get lost here. We share a bit of self-effacing humor about our mutually poor navigational skills. Another young man talks of his quest to hike the entire length of the canyon, and has left his bicycle at the end of the trail as a “shuttle.” He will walk the 9 to 10 miles one way, then ride his bike back to his truck parked at Chimney Rock. I share my experience from 2014 of fording the Fremont River, which he will need to do to reach his bike hidden in the bushes on the opposite side of the river. The two young women I meet work for Americorps, and are out on a backpacking adventure with a permit to overnight in the canyon. We share stories about everything from mountain lions to Macchu Picchu. Today, we are all united in the love of this canyon. It’s refreshing not to wonder if or how or when each of them will vote. 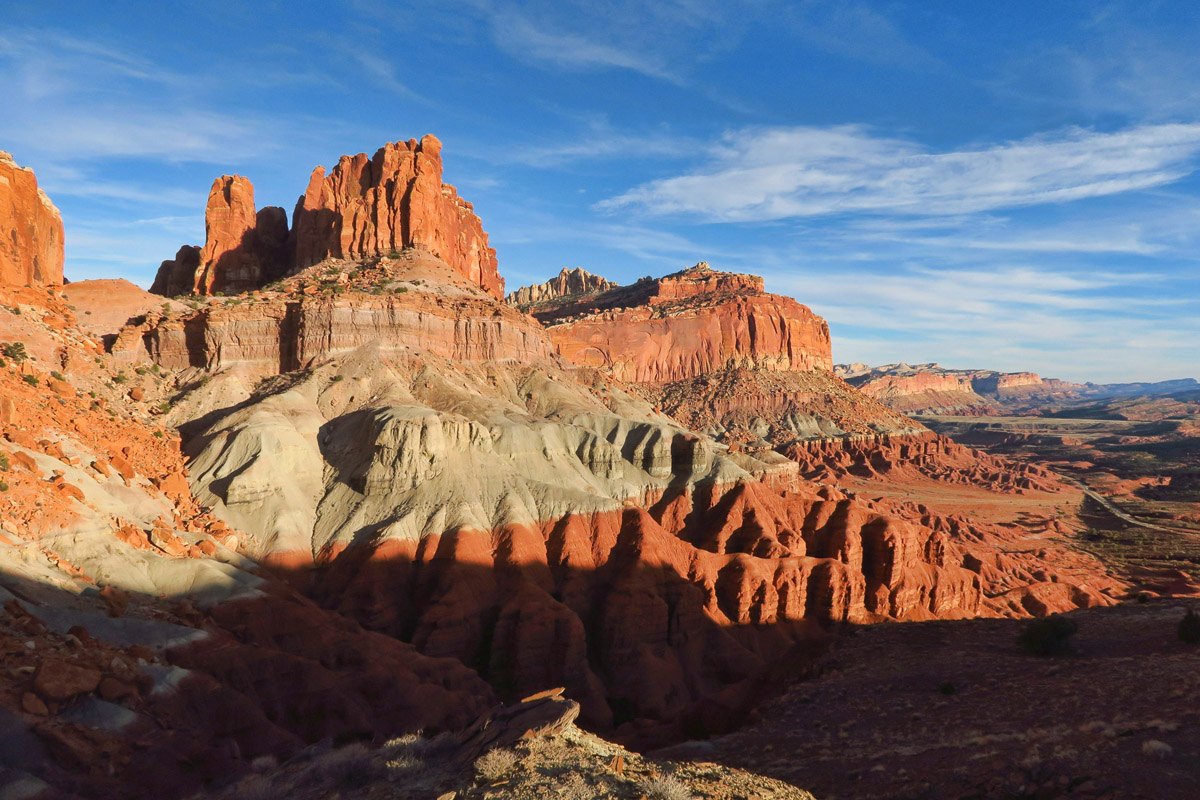 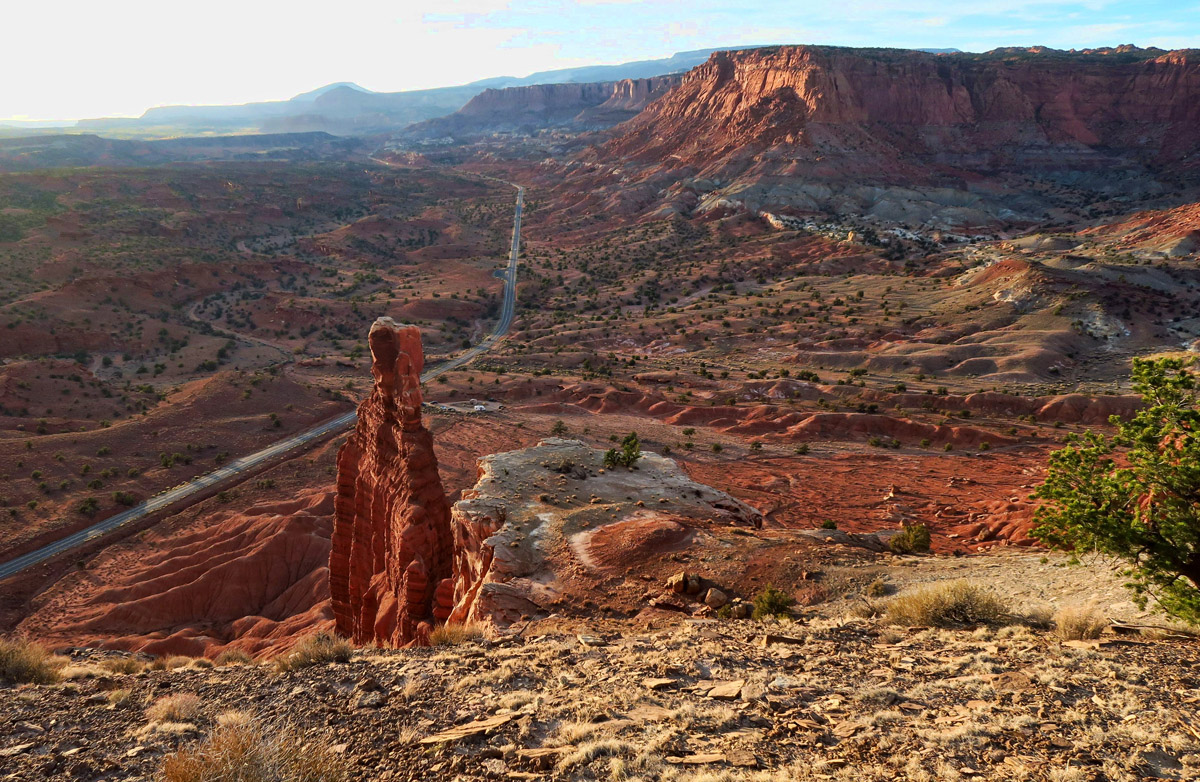 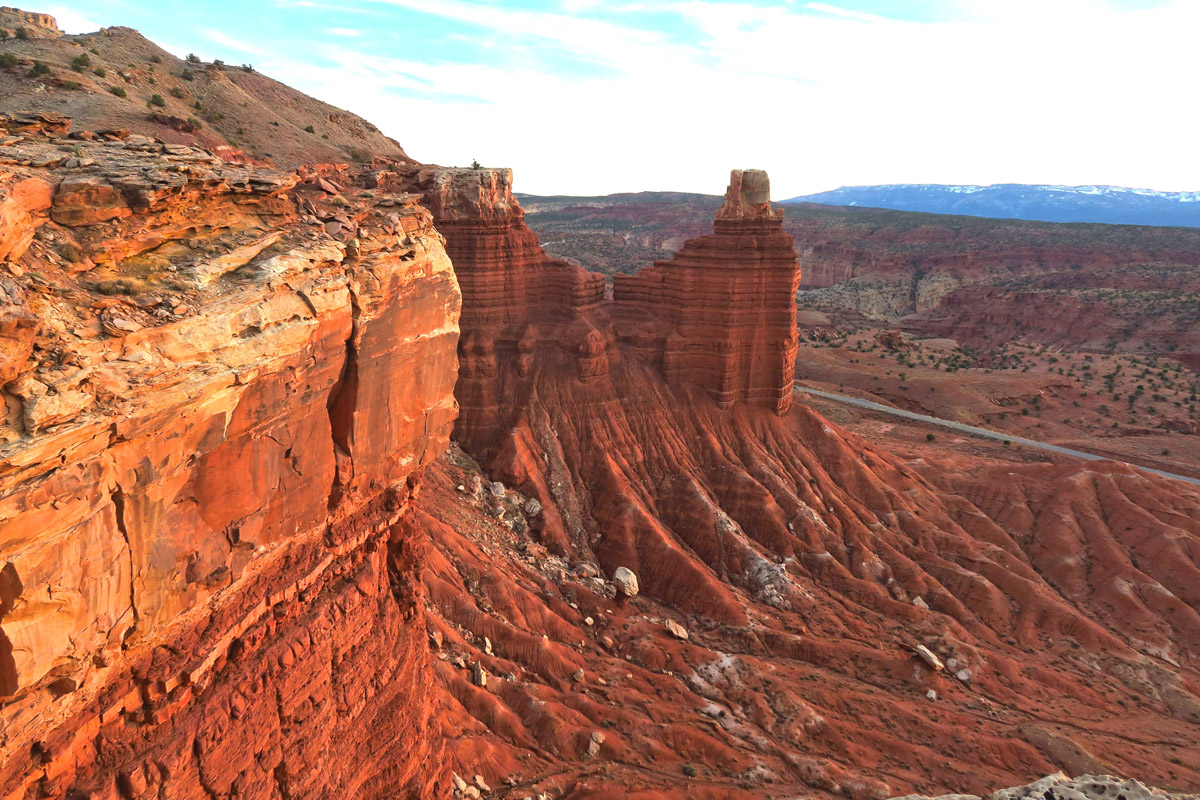 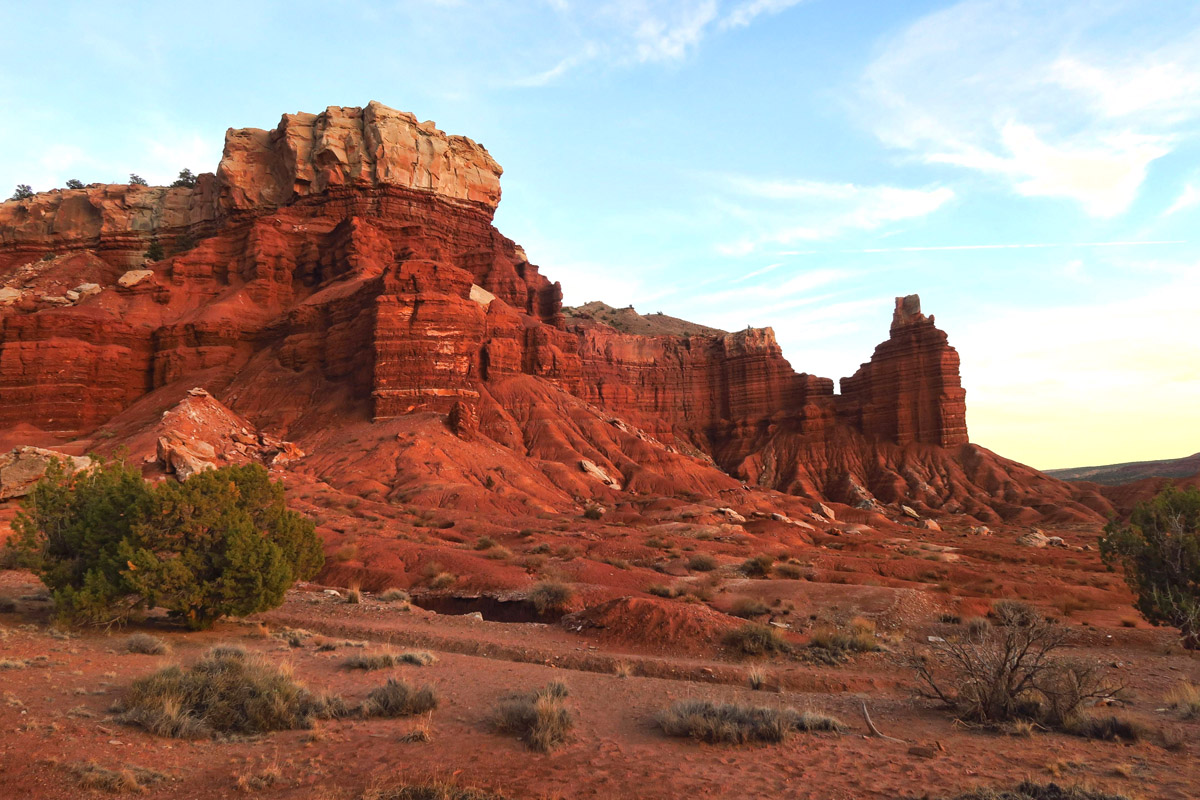 Upon return to the end of the canyon, I opt for the longer side of the loop back, up and over the mesa that looks down on the rock structure known as Chimney Rock. The sun is beginning to set just in time for my final decent. Once I reach the parking lot, I run into the young man doing the traverse, just pulling in on his bicycle. I ask him about the second half of his hike, and he tells me according to his GPS, it was more like 13 miles rather than the estimate of 10 given by the Park Service. He talks of exposed passages and a knee-high river crossing, but he seems exhilarated in having made the traverse.

It’s been a rich and restorative day, and I feel fulfilled having spent the day with someone other than Rachel, Lawrence, Anderson and Colbert for a change. 😉 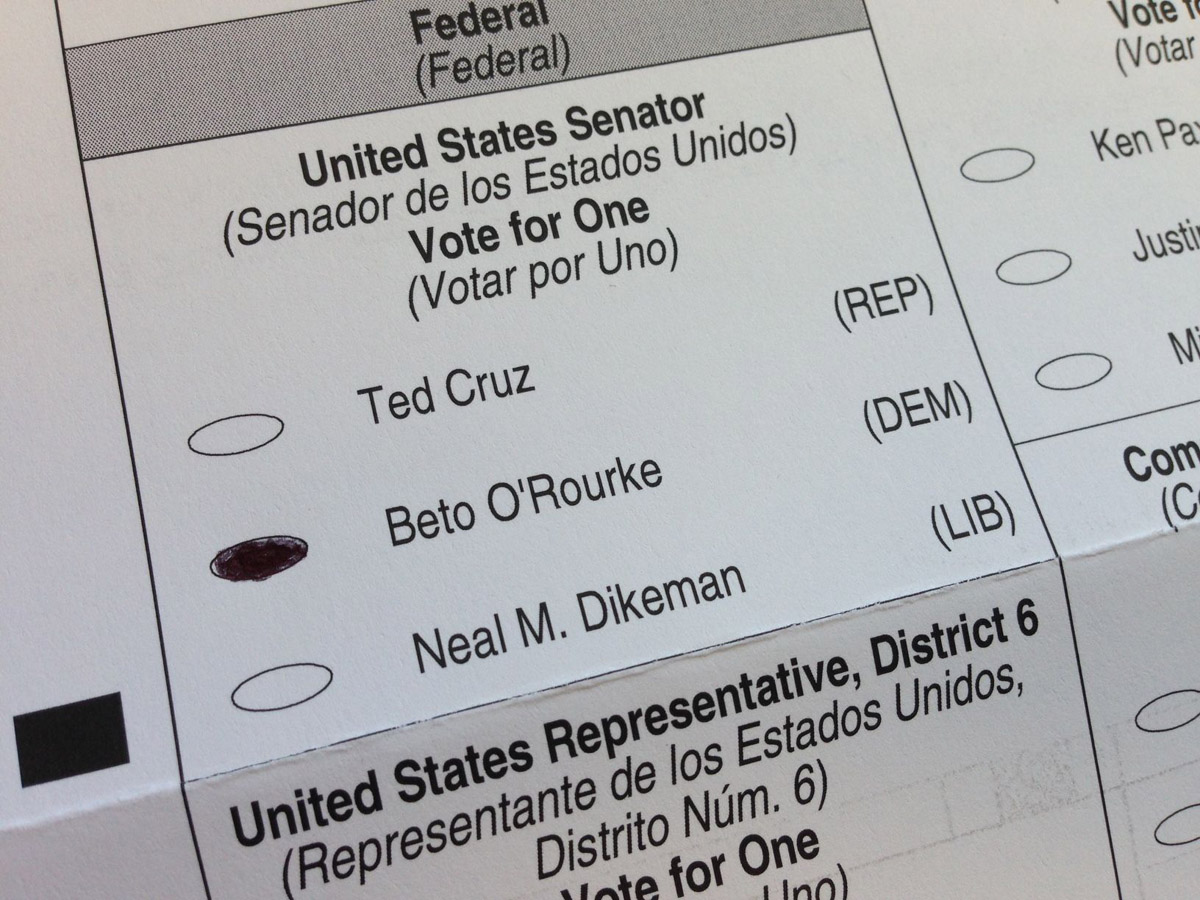 Sorry, Beto. I did what I could. See you down the road!

Amy is watching Last of the Mohicans in the other room with the kids. We started it last night after Ulysses’ basketball game. Pizza, carrots, Mohicans and then early to bed.

This morning, before everyone got up, I went on a run with Artemis and then made breakfast. Scones, German pancakes, bacon, eggs, and some bread that Jim and Christine brought by last night with butter and jam on it. Some coffee from beans that a friend in Austin sent to us last week. It’s not Whataburger, but…

After breakfast, we went on a hike in the Franklins with friends and dogs. Glorious morning in El Paso, crisp and clear, you can see for miles at the top of Crazy Cat.

Listening to the war cries and shots firing from the TV speaker in the other room, I’m smiling because we are all together again. Doing something — just hanging out, just being around, just being — that I haven’t done in almost two years.

Been to all the kids’ games over the last few days, made dinners at home, seen some friends and got to be outside, on the mountain and down at the river with Artemis.

I can hear Amy yelling in the other room “Don’t watch this part! Don’t watch it!”

And Henry saying “I’m watching it!” and laughing.

Already miss the road. Miss our team and the volunteers we’d see in every city, every town. Miss the energy and smiles and joy that I found all over Texas. Miss the purpose, the goal. Miss being part of something so much bigger than me or my life. Organized for a common cause and end. We were all together, really together. Never felt anything like that.

While there is loss, I also feel intense gratitude, waves of it every day. How was I so lucky to be part of something so amazing?

I can close my eyes and see so many faces and smiles. Hear the laughing and the cheering. I can see us hopeful and connecting as we shook one another’s hand, looking at each other and nodding, knowing. All the stories that have been shared with me, all part of me. Every gift and kindness, every word of encouragement. Every bit of faith in what we had set ourselves to.

The loss is bitter, and I don’t know that I’ve been able to fully understand it. I try not to ask what I could have done differently because I don’t know that there is an end to those questions or thoughts. There are a million different decisions I could have made, paths I could have taken, things I could have said or not said, said better or differently. I did my best, everyone did. For our democracy to work, for us to be able to continue to work together, it’s important to be at peace with the outcome.

But what remains is this: I’m the luckiest guy in the world to have had the chance to do this with you. To bring power and joy to politics. People instead of PACs. Communities instead of corporations. Polls and consultants left to the wind and hopefully to the past. To have the confidence to move with the courage of our convictions. To open our hearts to one another. To not allow our differences (of party, of geography, of race or anything else) to divide us. To not know how it would end but to know that we had to give it everything.

I don’t know how to fully make sense of what remains or to measure the impact we’ve had.

Certainly, we changed something in Texas and in our politics. At the very least our campaign reflected a change already underway in Texas that hadn’t yet been seen in statewide campaigns.

Future campaigns will be won, influenced by the one we built. Candidates will run who otherwise wouldn’t have. Some will take heart in knowing that you don’t have to accept PAC money, you don’t have to hire a pollster to know how you think or what you want to say. They will have seen in our campaign that there is real joy and power in being with people, all people. Republicans, Democrats, Independents. People who’ve never voted and never will. People who will vote for you, people who won’t. People who live in the forgotten neighborhoods of the biggest cities. People who live in small towns that no Senate candidate has been to in 70 years.

I am grateful that you gave me a chance to be part of this. I feel responsible to you, to our country, to my kids and to my conscience to make sure that we continue to find a way to respond to the urgency that we still feel. It didn’t go away Tuesday night. Our ability to convert hope and inspiration into action and change must not be wasted or kept to a candidate or campaign lest it dissipate and be rendered unusable at the most challenging time in our country’s history.

Just know that I want to be part of the best way forward for this country — whatever way I can help in whatever form that takes. Know that I am honored to have run this campaign with you and that I want to continue to honor and be honest to what was powerful about it.

For the time being, I am going to focus on being a better dad to our kids who have not had much of one for the last 22 months.

Movie is over. Now going to Molly’s basketball game and then we’ll see what’s next.

See you down the road,