I carefully timed my visit to Capitol Reef to hit the cottonwood season. Sure, there is the perfect, crisp cool fall days. And the promise of lighter traffic once school is back in session. But the main reason I was really longing to return was to try to ride the golden wave of autumn. There is something about the brilliance of those giant cottonwood trees that just mesmerizes me. And if my timing is right, I can ride that golden wave all the way down to Zion.

I love seeing them in the early stages of chlorophyll loss when their leaves are a bright lime green, turning almost a day glow yellow like the colors of my Endless Summer blacklight poster. In this early stage, leaves are variegated where the tops of the trees are starting to turn, but the lower branches hang on to their chlorophyll just a little longer. When I first arrived at Fruita Campground, I was delighted to see the trees at this initial stage, thrilled that my timing seemed to be just about perfect. 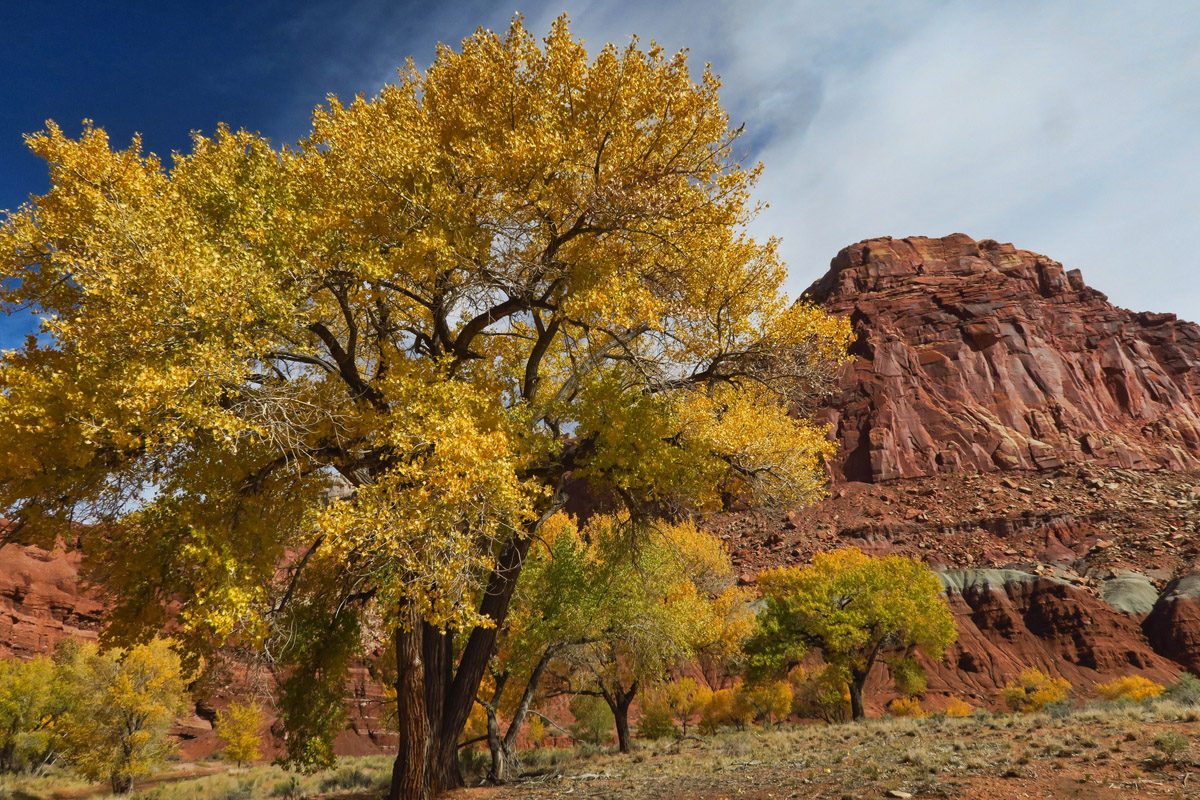 Every time I passed the visitor center, there were people stopped across the street taking pictures of this magnificent cottonwood. 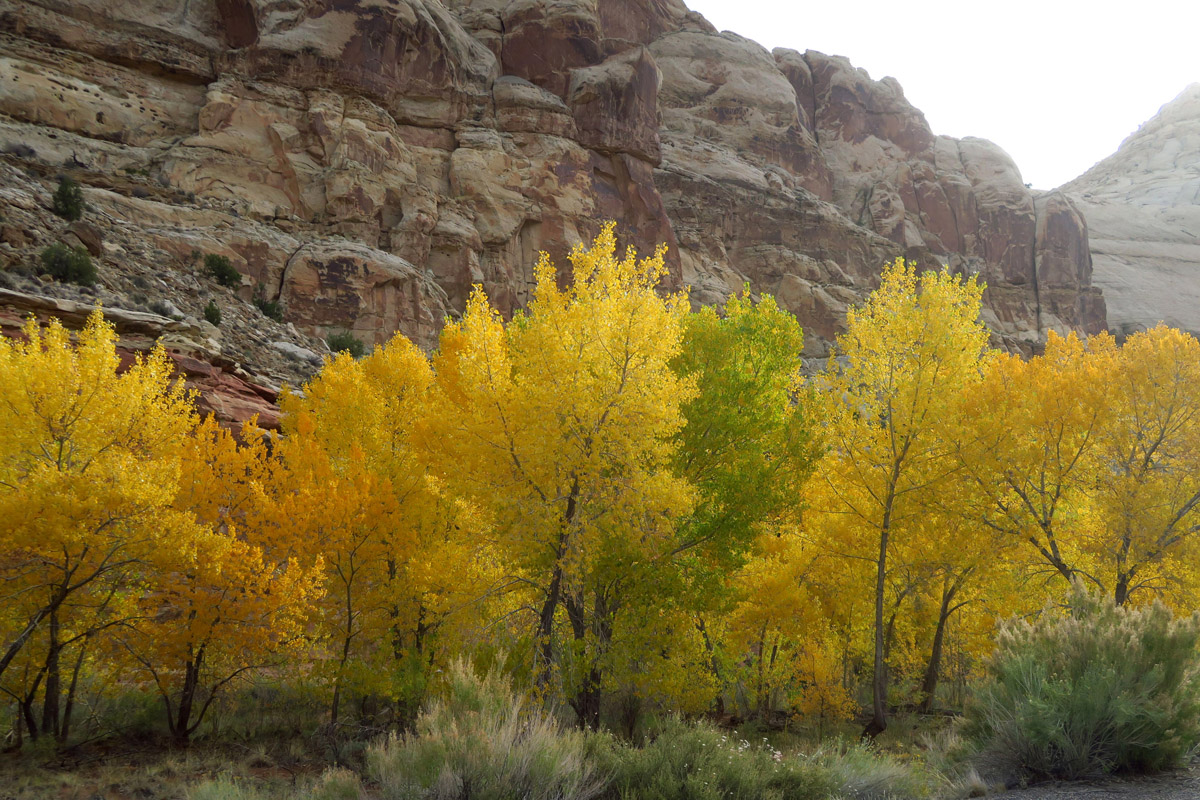 The Fremont River is lined with a golden path… 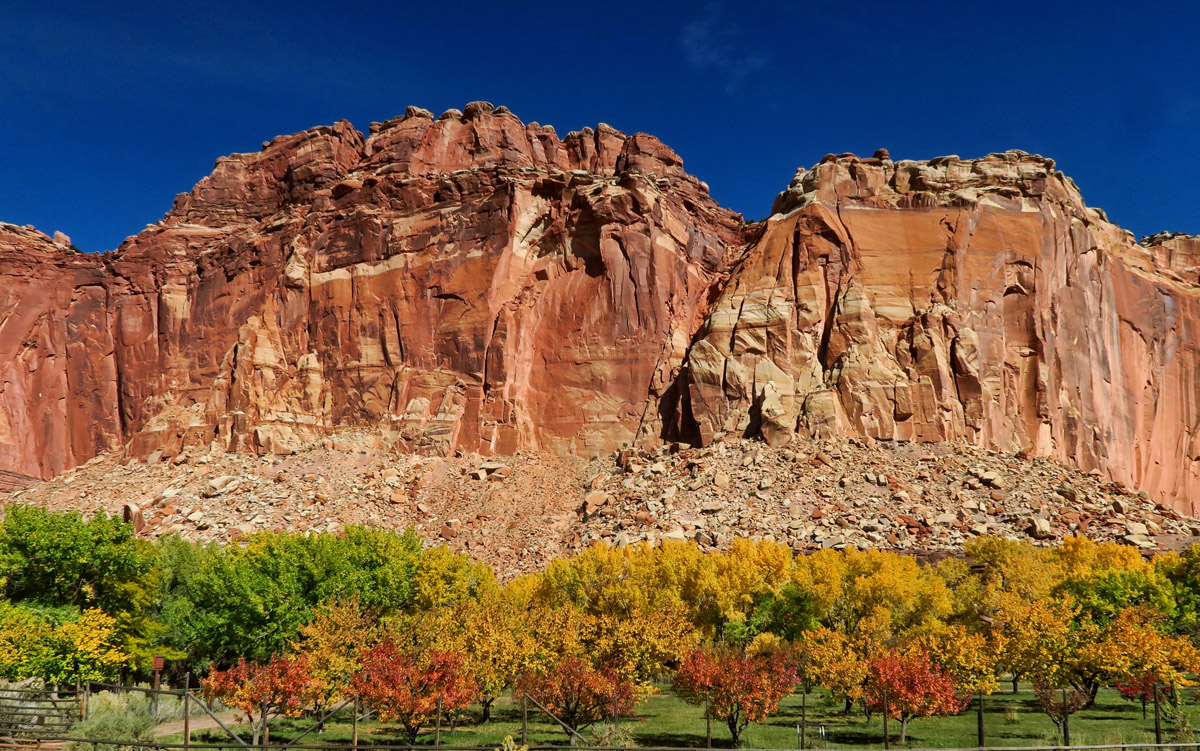 There are almost 3,000 fruit trees planted in the orchards in Capitol Reef, many by the early Mormon settlers.

The perilous lure of staying in the Fruita Campground is the Historic Gifford Homestead where they sell “mini-pies” made with fruits from the orchard in the park. Peach, Apple, Cherry, all locally made with flaky crust. One must get there early, though, as they often sell out by early afternoon. I learned another treasured tip when I went early for my long-awaited peach pie as I arrived just as the delivery van was pulling out. If you get there right at 8:00am, the pies are still warm from the oven. Is a peach pie for breakfast any worse than granola over fruit or a biscuit with fruit jam? I think not! But I disgress…back to the cottonwoods. 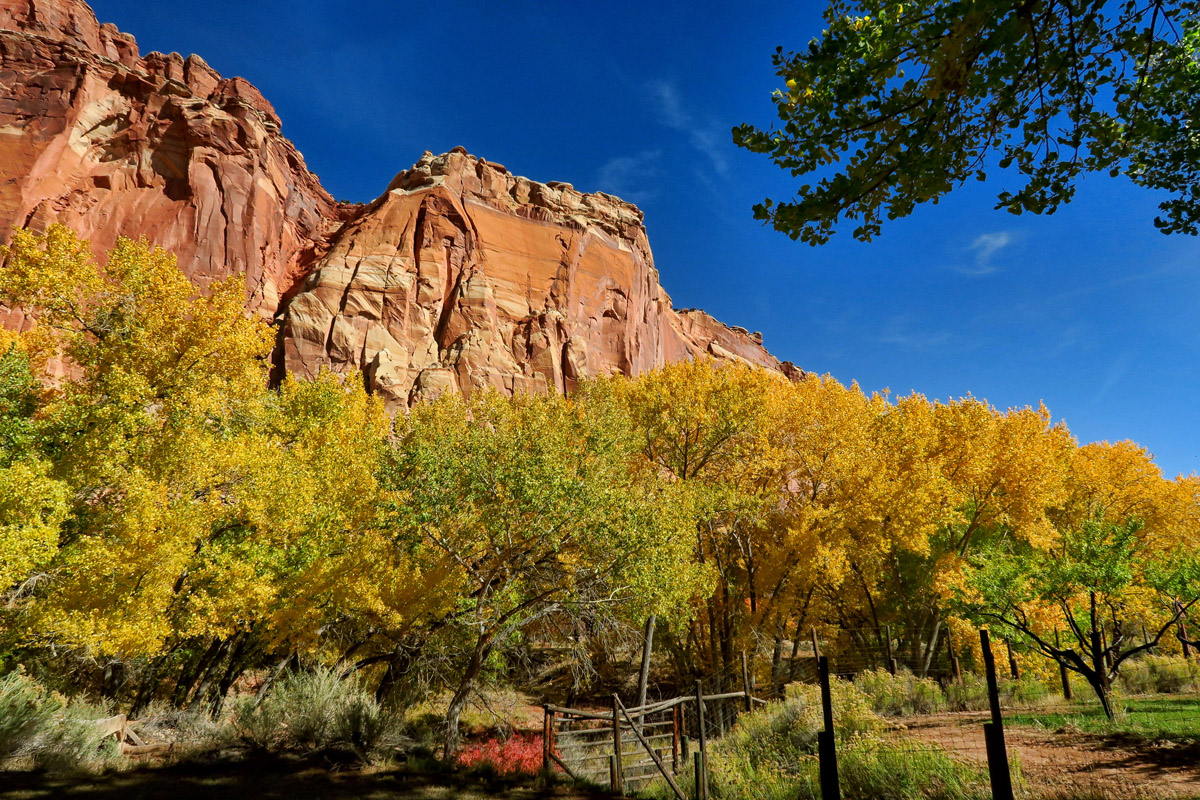 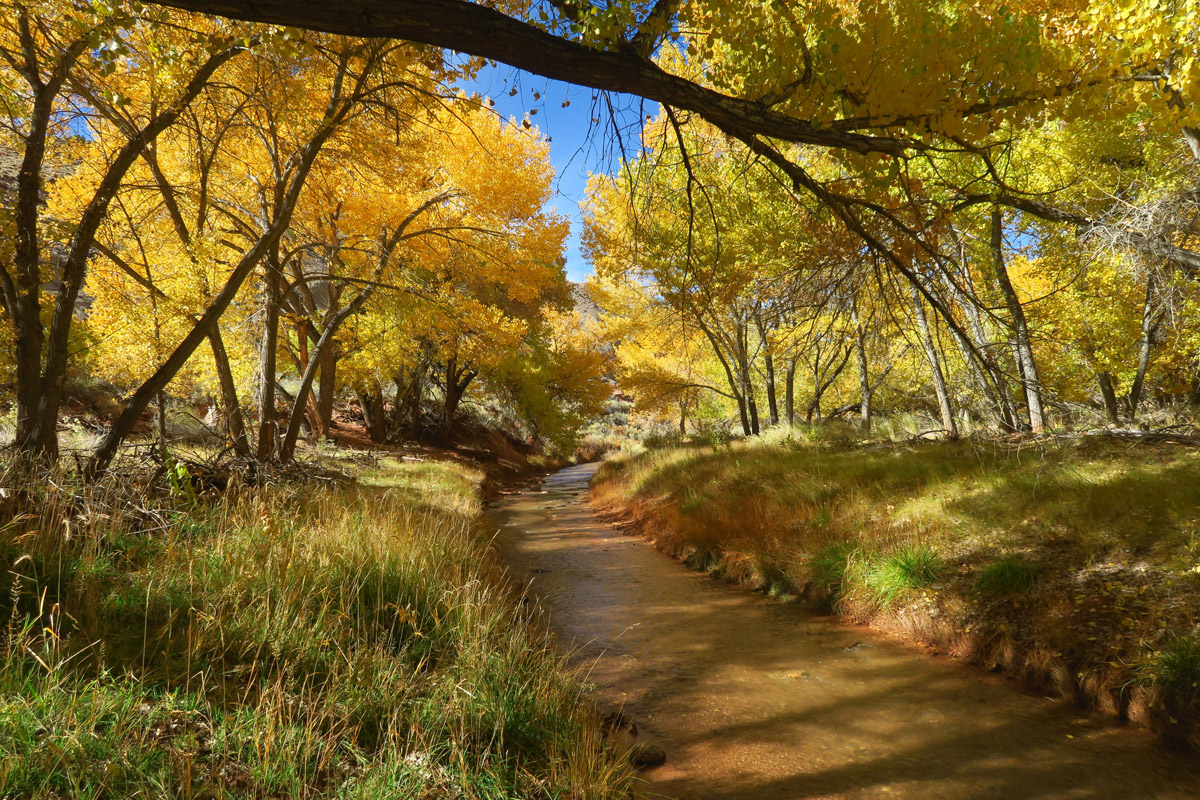 This is the stream behind the Nature Center where the woman suggested I come to see “trees tangled across the creek.” 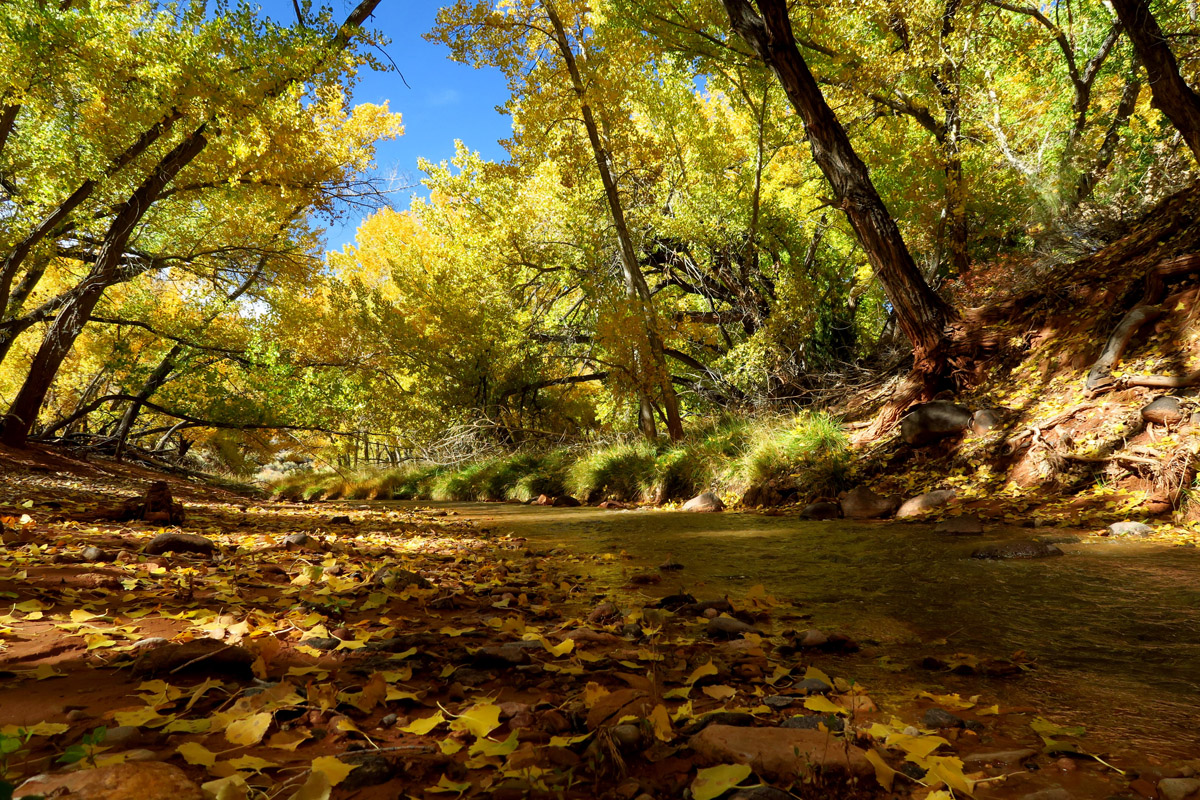 It is indeed a lovely spot, and no one else around.

I have a lengthy chat with the woman behind the counter in the Gifford Homestead while she is ringing up my pie. She asks if this is my first time in the park. “No I came back for the cottonwoods. Oh, and the pie, of course.” She replies, “If you really want to see some spectacular cottonwoods, go behind the Nature Center.” She tells me her grandfather used to live in the restored house that now serves as the Nature Center, while he worked across the street at the historic blacksmith shop. “Go down behind the house where giant limbs tangle across the creek. We used to play there as kids. It’s especially beautiful right now.” 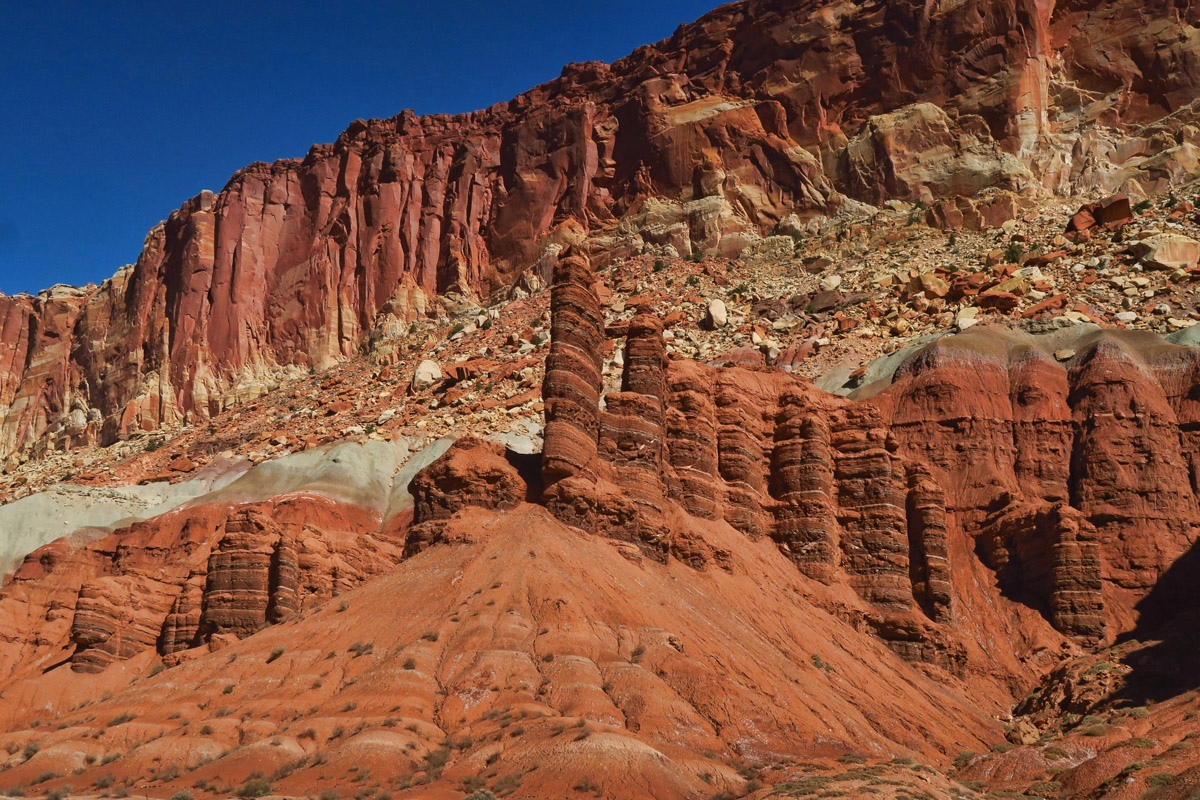 The first eight miles of Capitol Reef Scenic Drive are paved, and offer phenomenal views of the Waterpocket Fold. 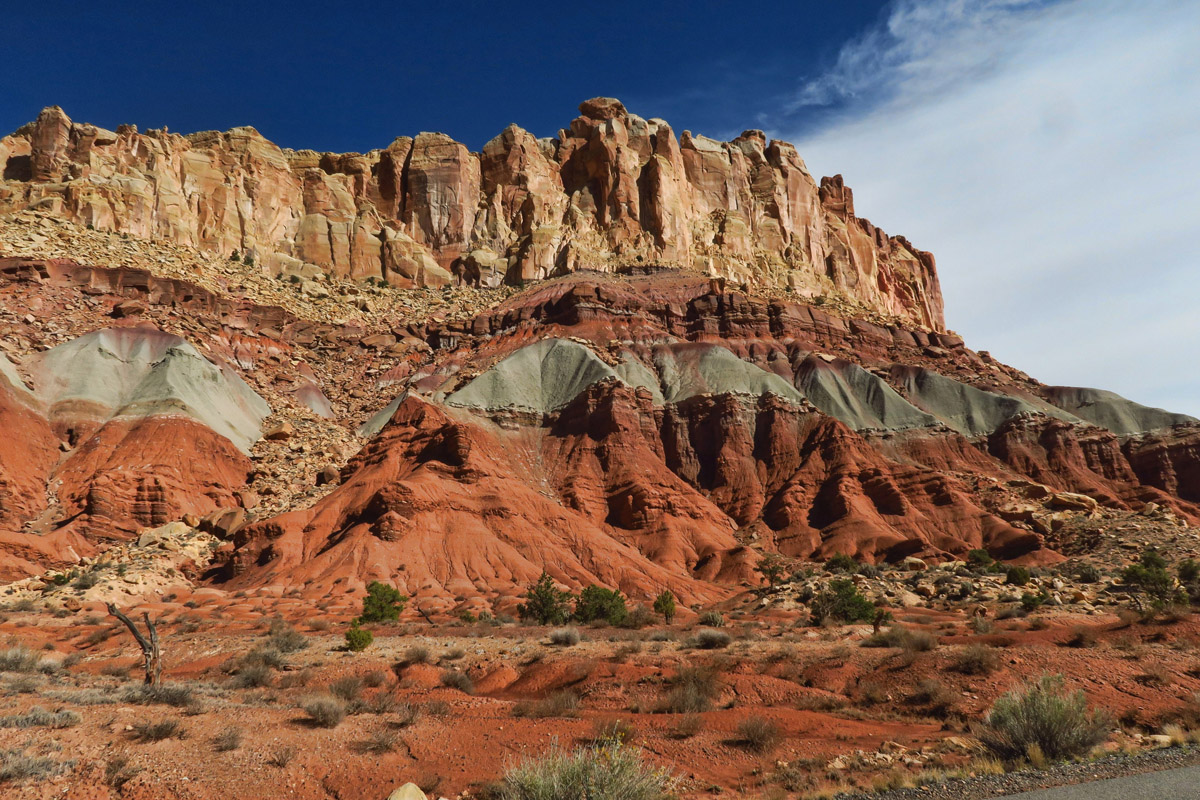 The heaved western side of the Waterpocket Fold is 6,000 ft higher than the eastern side due to the warp, exposing through erosion a layer cake of different sediments. 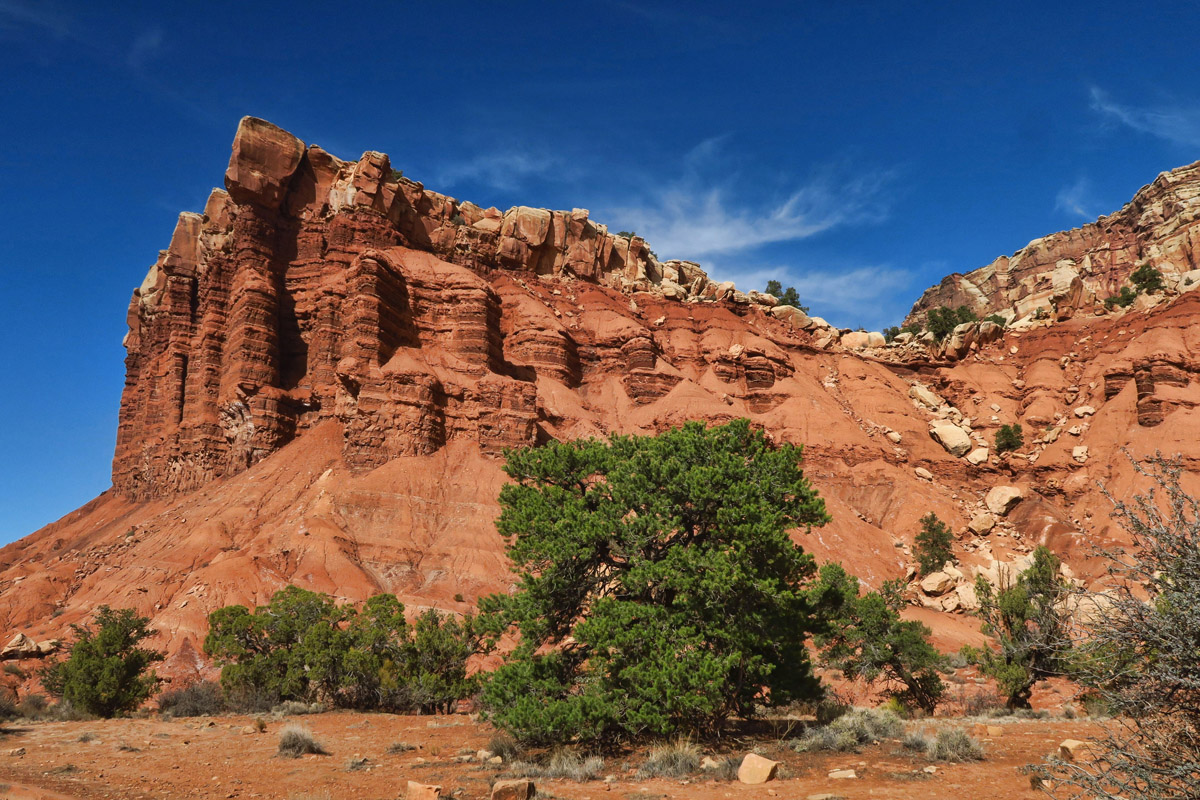 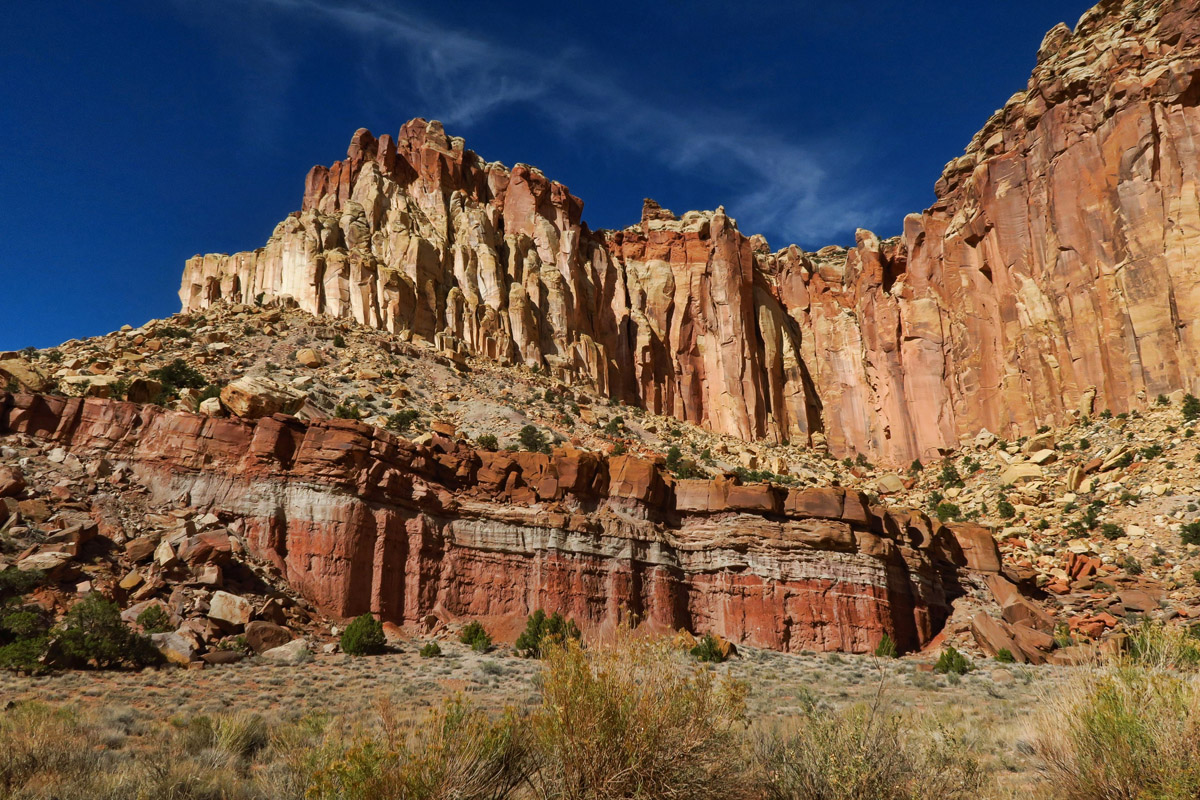 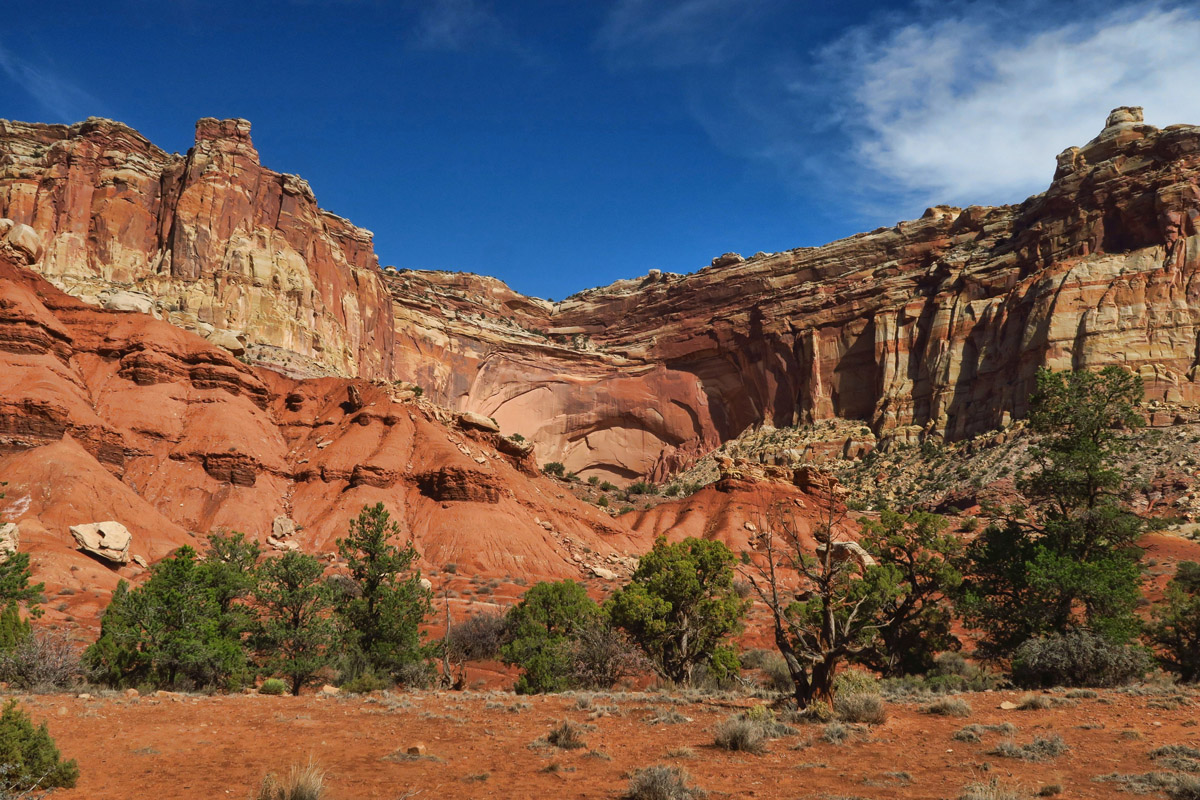 During the nine days I spend in the Fruita Campground, the day glow colors ripen into radiant egg-yolk yellow. Standing beneath these giant trees, their lemony-yellow leaves back-lit by the sun warms me to my core, and I can’t seem to get enough of them. I enjoy watching their subtle changes day over day until by my ninth day, most of them are approaching that antique gold color, the patina on the leaves dulling just slightly, indicating they are nearing Nature’s grand finale.

There are a couple of historic cottonwoods in the park that are over 100 years old. According to park historians, one was planted in 1886 and the other in 1905. These trees have far outlived the life expectancy of a cottonwood, which is typically 70 to 80 years, and as a result, have grown to a circumference of 23 ft. The oldest of these two trees is known as the “Mail Tree,” as early Fruita residents built a collective wooden mailbox beneath the shade tree. 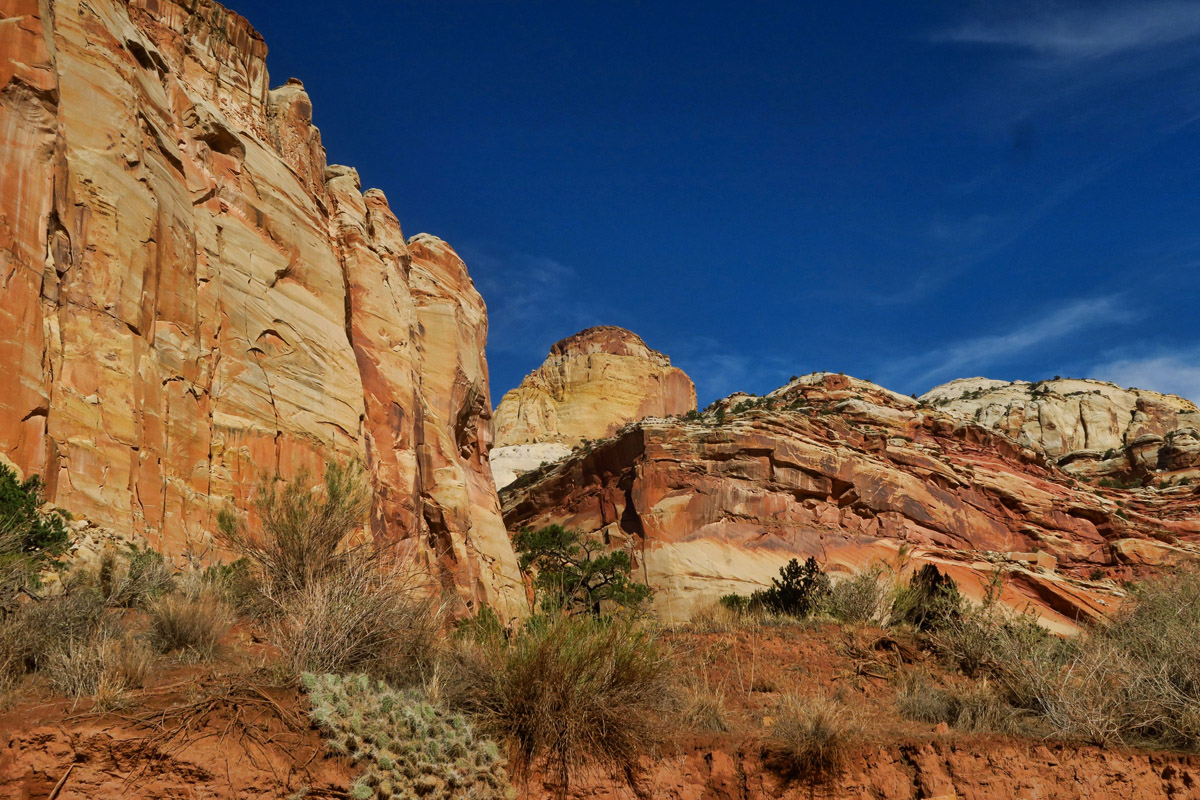 Toward the end of the paved section, one gets a first glimpse at the feature known as the Golden Throne. 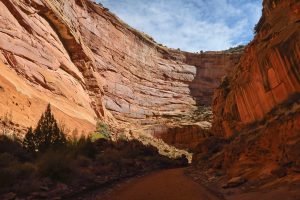 The final two miles of the Scenic Drive are gravel, and cut right through Capitol Gorge. 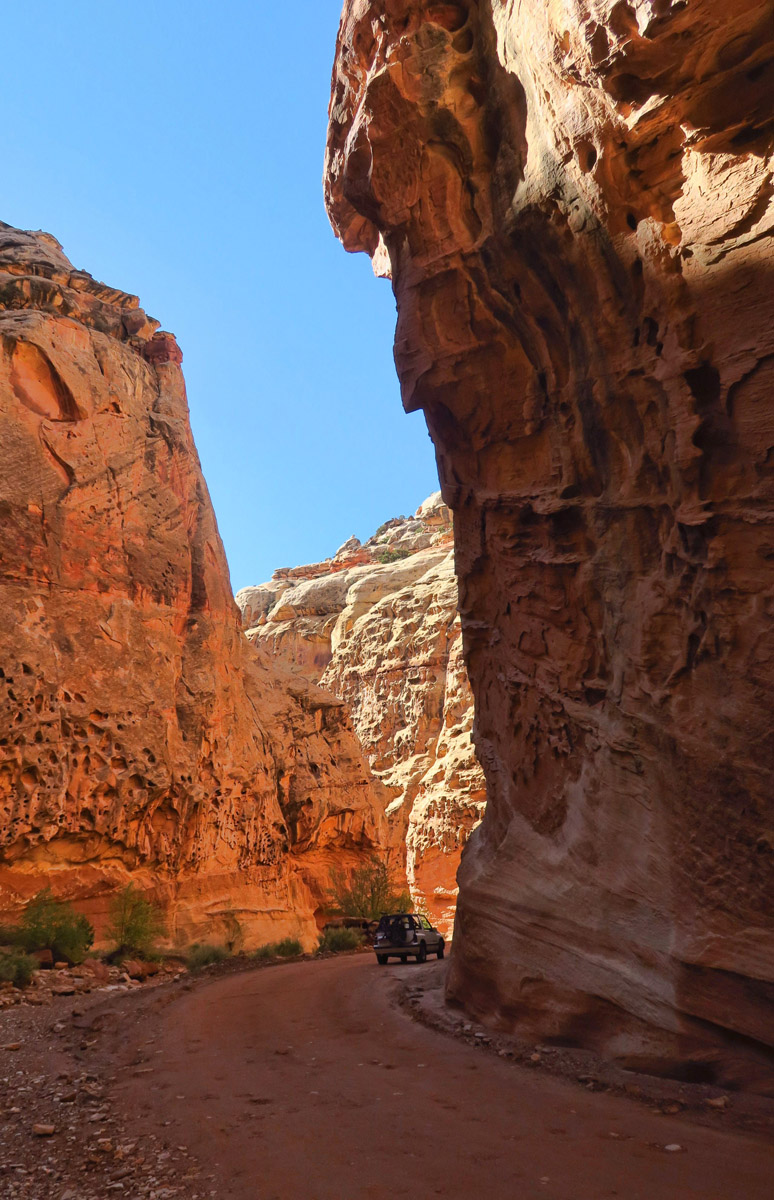 This section was actually a through road from 1884 to 1962. The drive now ends and becomes a trail through the wash. 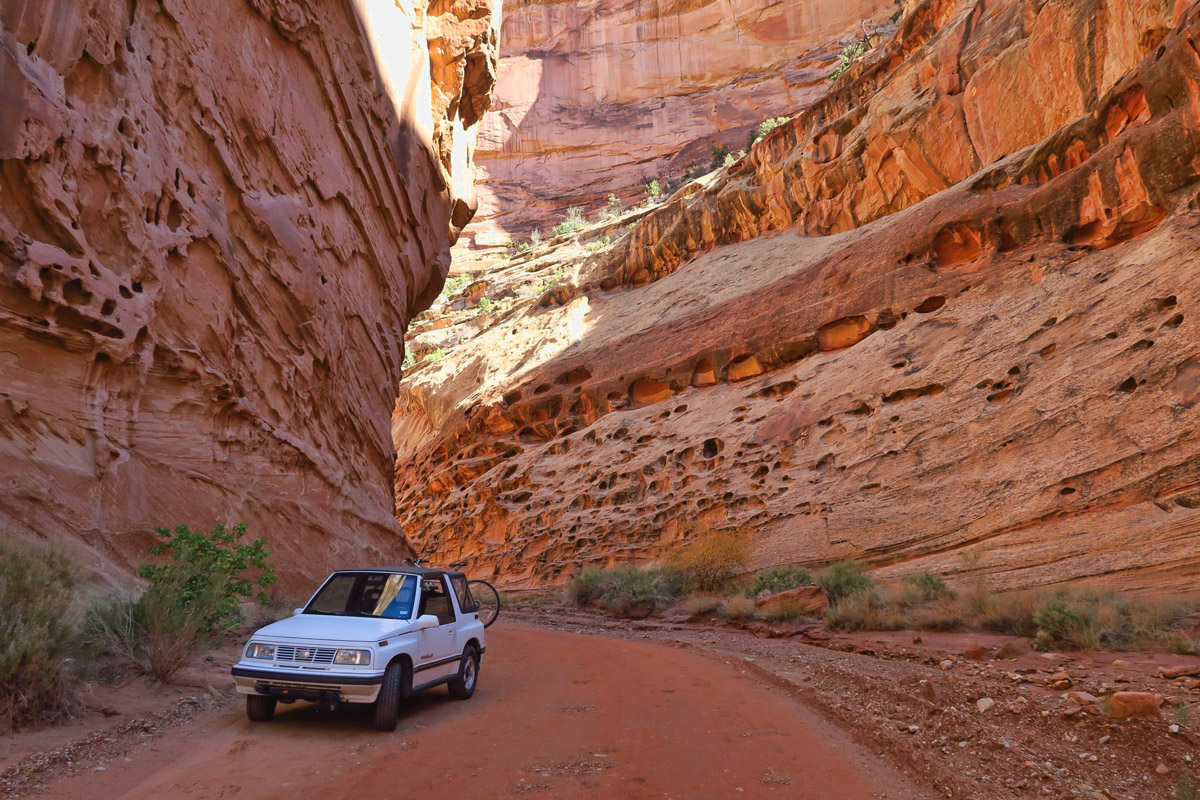 The Tracker would have made a great adventure-mobile commercial back in 1994, doncha think?

Once I am done playing in the mud like my new friend back in the pie shop, I take the Tracker for a spin down the “Scenic Drive,” a name that just can’t do justice to the 100 mile long warp in the earth’s surface that is known as the Waterpocket Fold. This feature is a “A monocline, or a step-like fold in rock strata consisting of a zone of steeper dip within an otherwise horizontal or gently-dipping sequence.”

There’s not a bad view in any direction from the eight-mile scenic drive. The further one goes into the canyon, the more beautiful it gets as the walls narrow down and get higher. At one point, it’s like a slot canyon for cars, and I am stopped by a woman who asks me to wait so she can film with her iphone while her husband drives through the canyon in his big-assed truck. I always wonder what people will do with that footage shot in the moment. 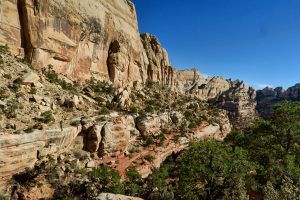 At the end of the dirt road, there are a couple of fun hikes. Capitol Gorge follows the wash, while the Golden Throne trail climbs up for views overlooking Capitol Gorge. 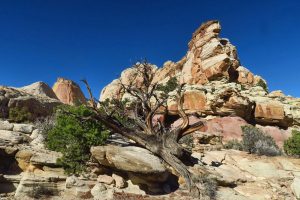 The Golden Throne trail is 4 miles RT with a 730 ft elevation gain. 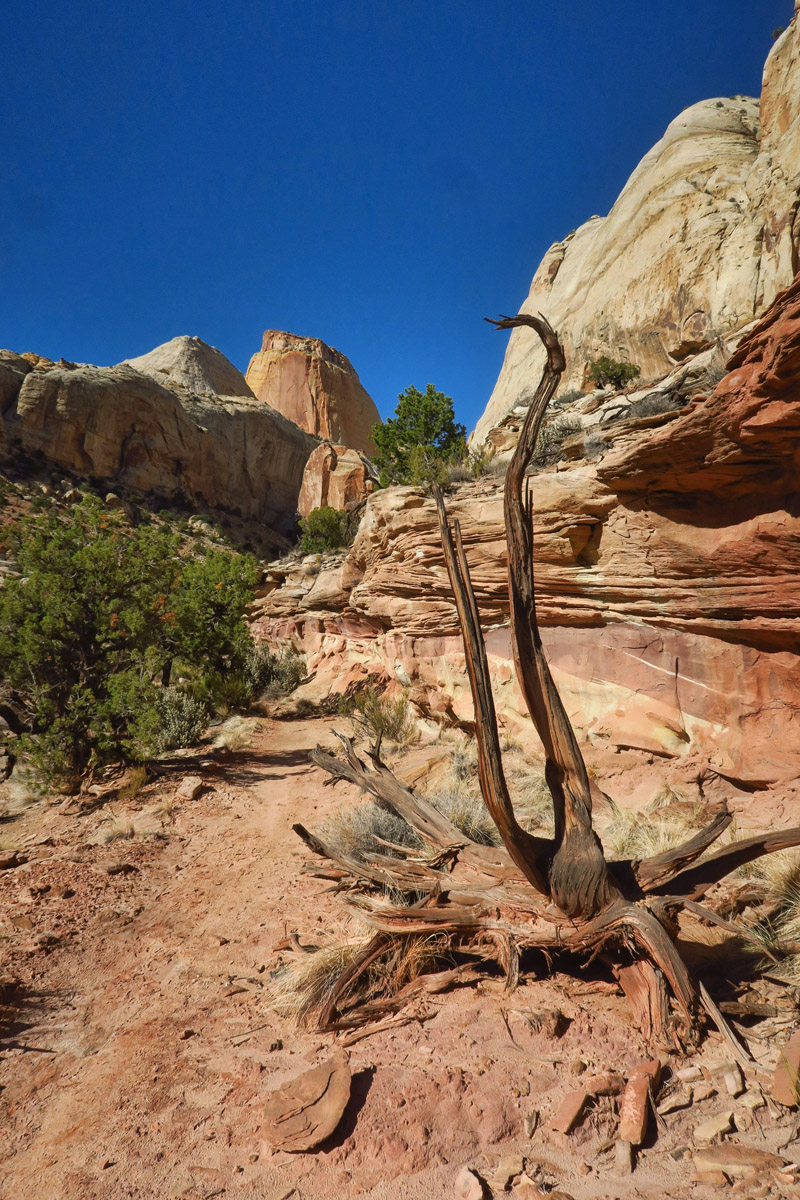 The trail follows the canyon rim and offers some stunning scenery. 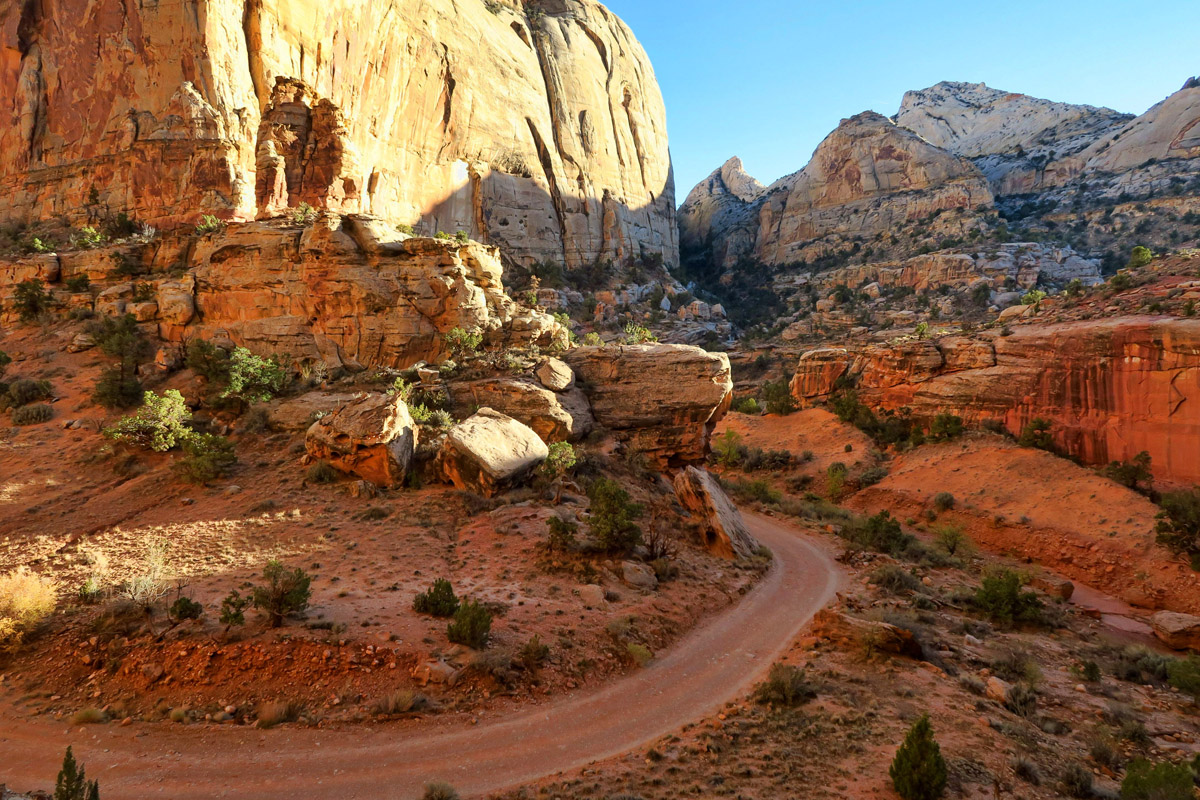 Golden Throne Trail overlooks a portion of the Scenic Road below. 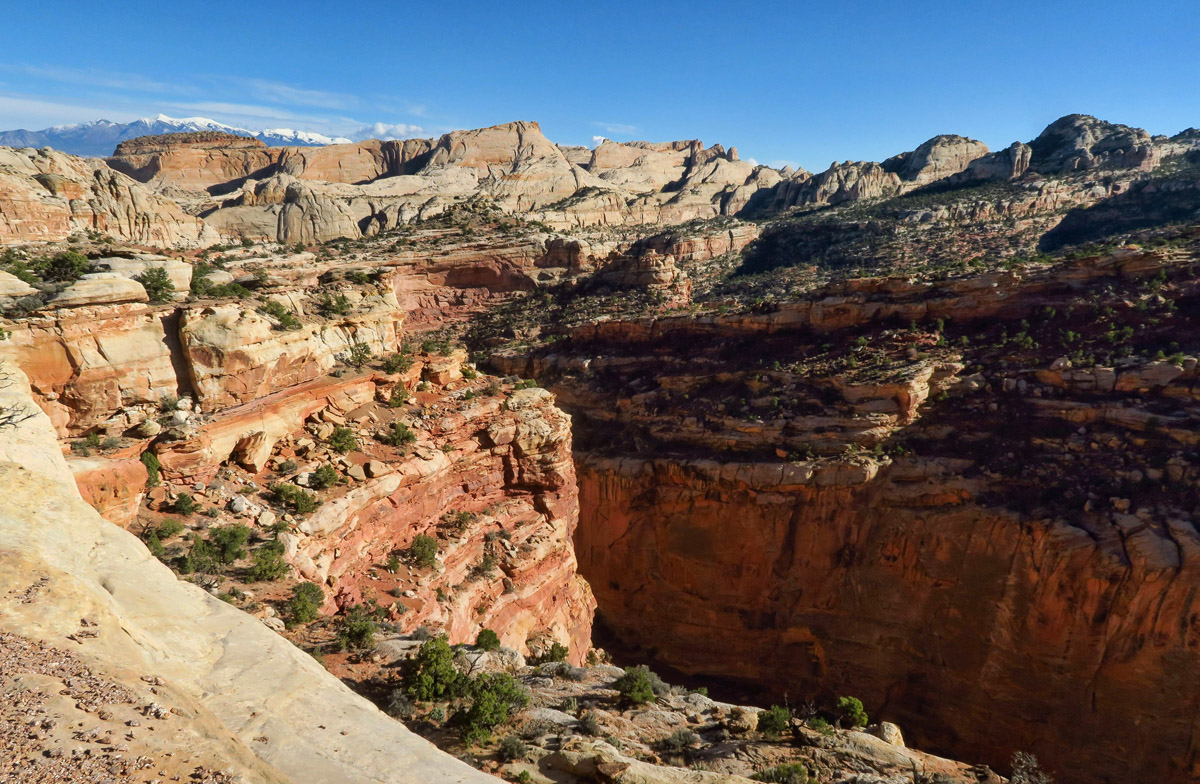 At the end of the Scenic Road is a trail head for two very different but equally interesting hiking trails. The Golden Throne trail is a four mile round trip up above the canyon rim, while the lower trail follows the old Capitol Gorge road that was used as a route through the canyon up until 1962. Mormon pioneers took eight days in 1884 to clear the first road through the Gorge, and settlers had to remove heavy debris after every flash flood. Early travelers recorded their passage on the canyon walls at the Pioneer Register, where you can see names dated back to 1888. 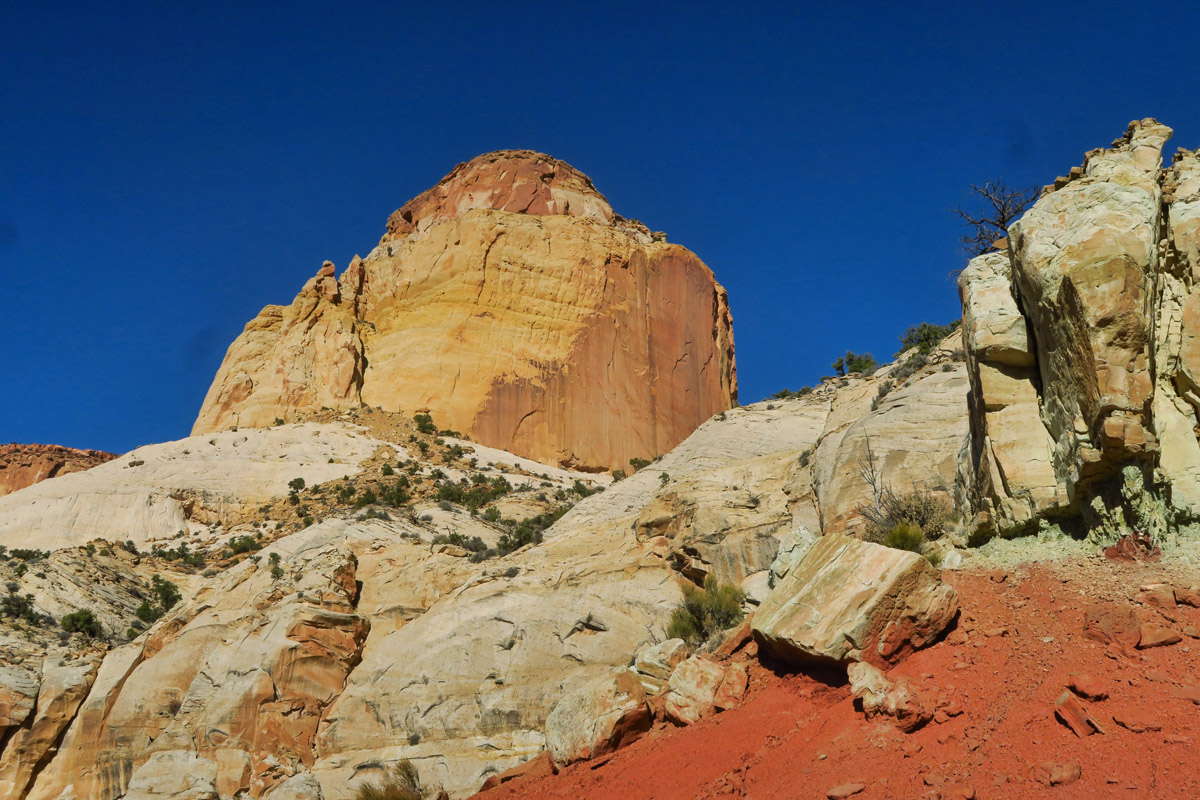 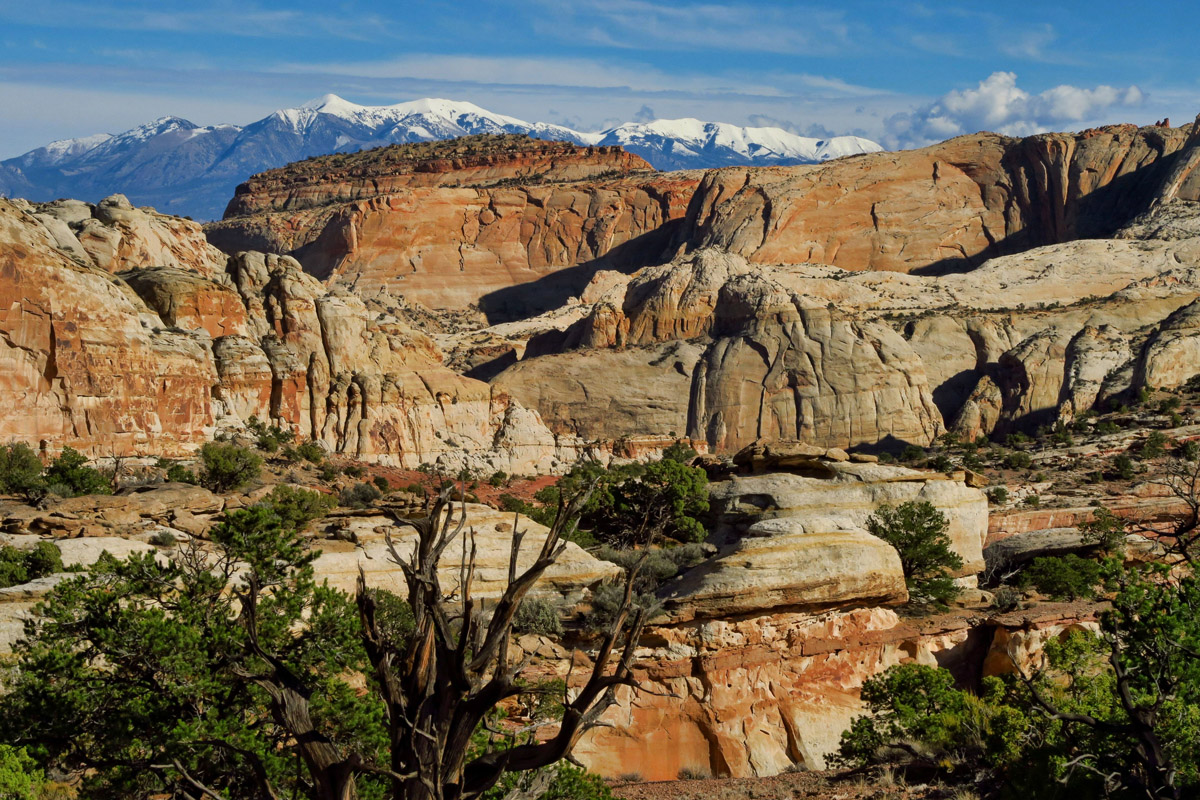 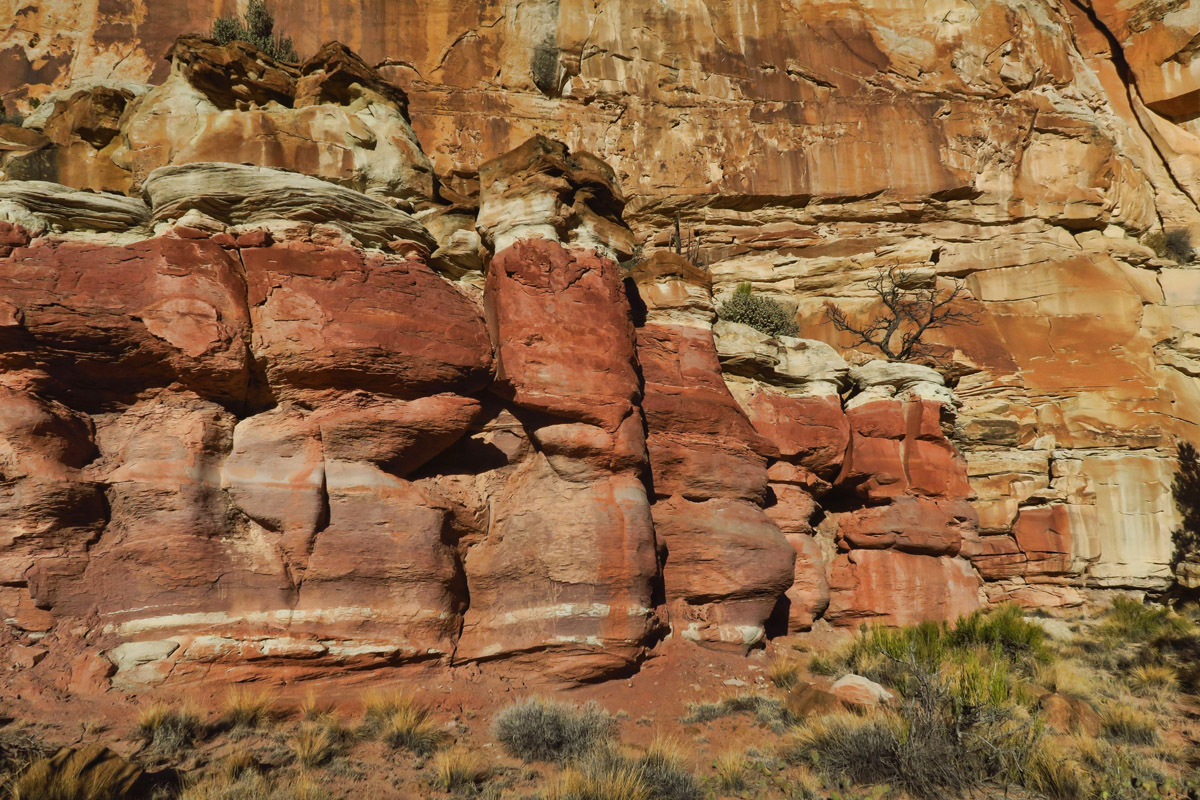 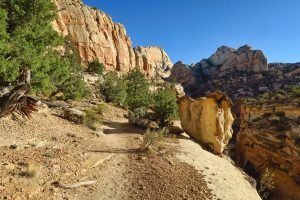 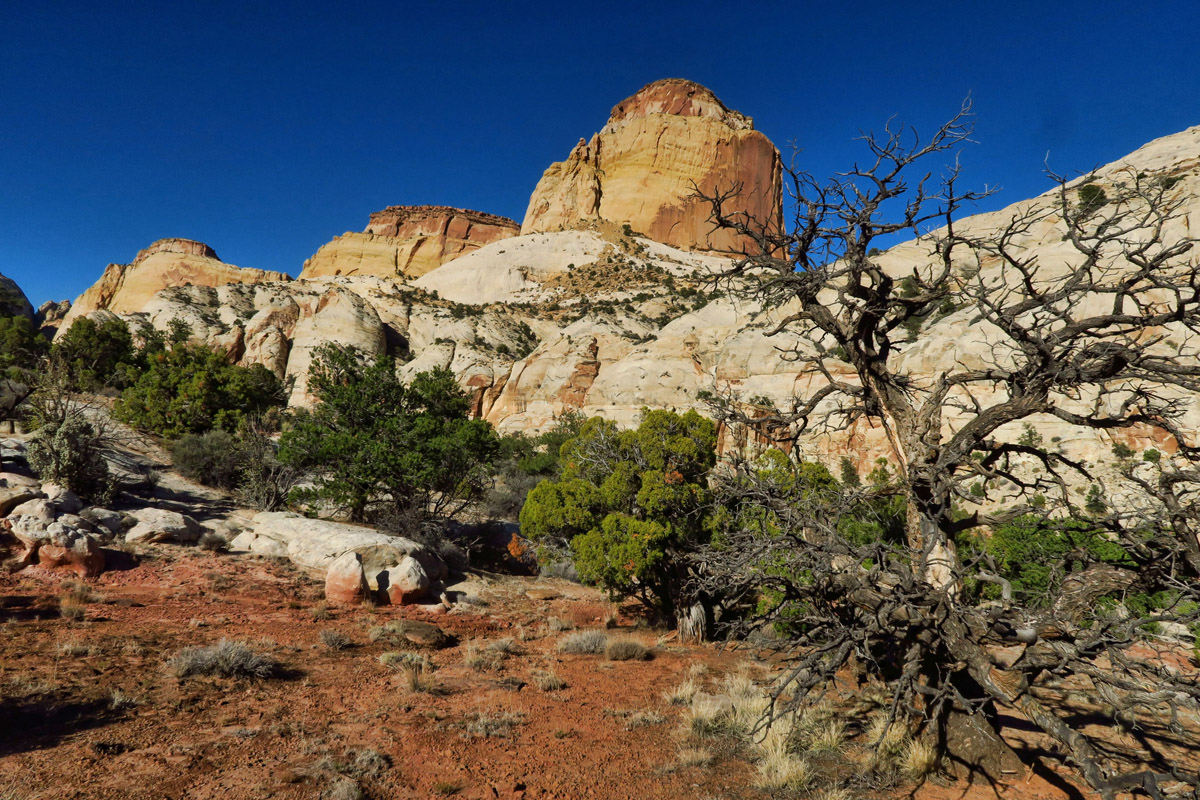 While the red Wingate sandstone tends to erode into cliffs, the Navajo sandstone erodes into domes. 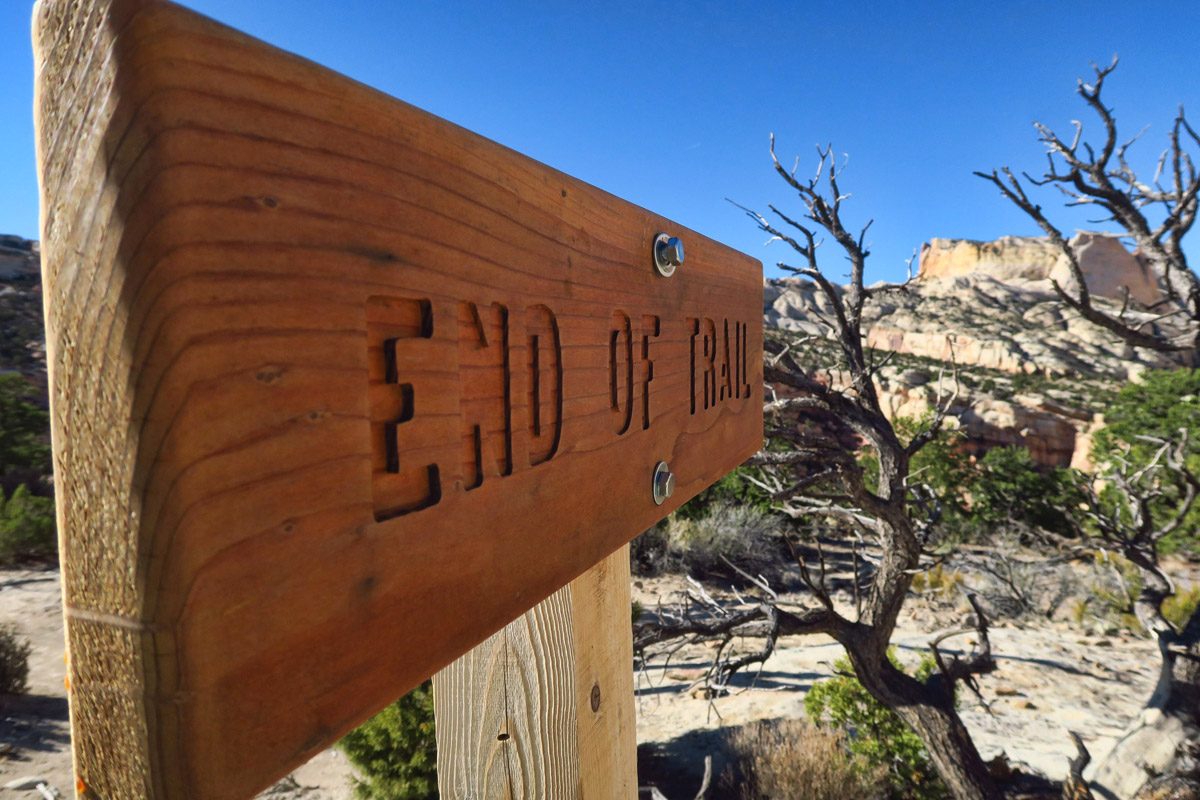 Lest one be tempted to continue on over the cliff edge… 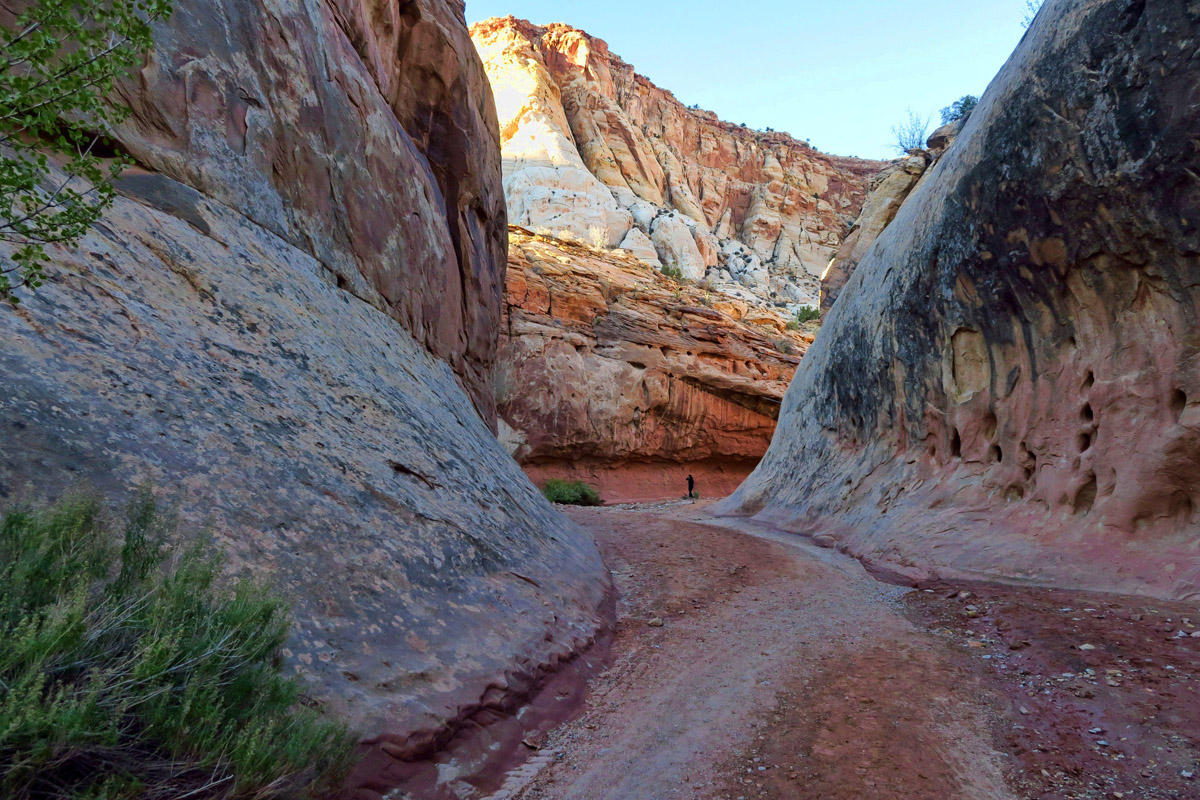 If the 4 mile hike is not enough walking, one can also do the 2 mile RT Capitol Gorge hike. 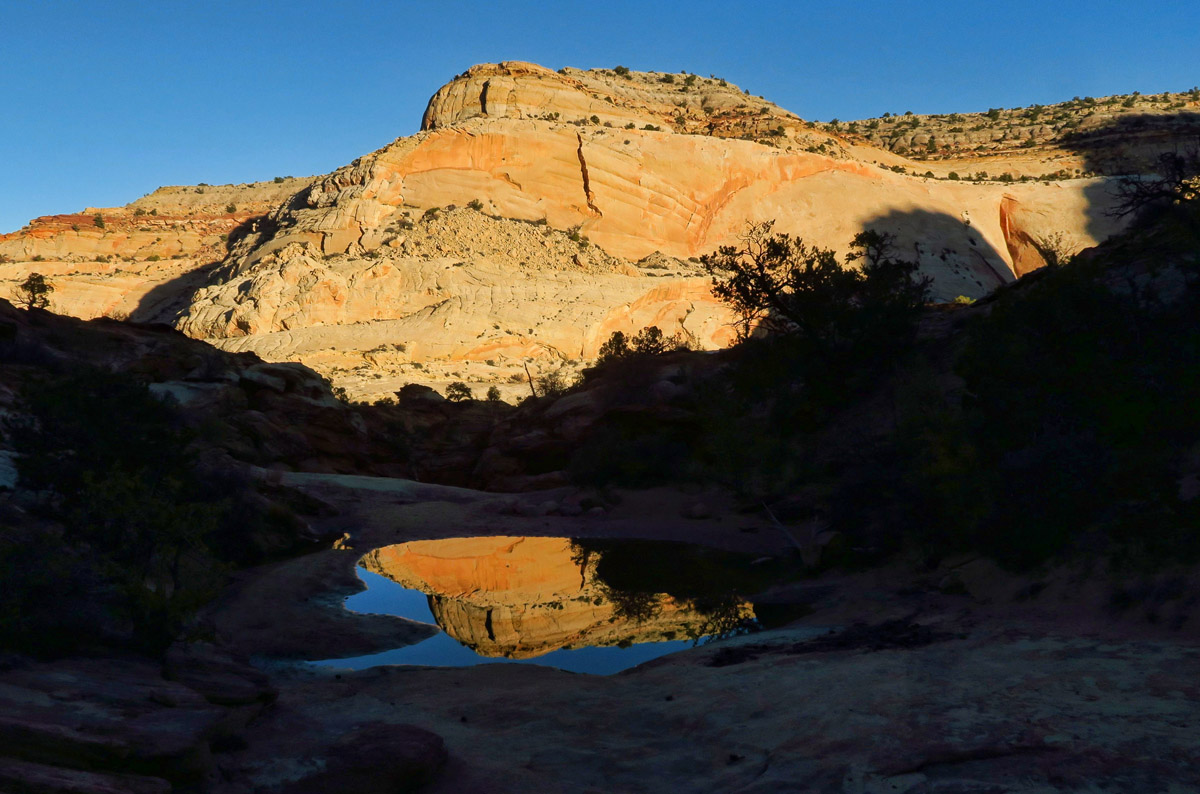 At the end of the Capitol Gorge hike, one can do a short scramble up to “The Tanks.” 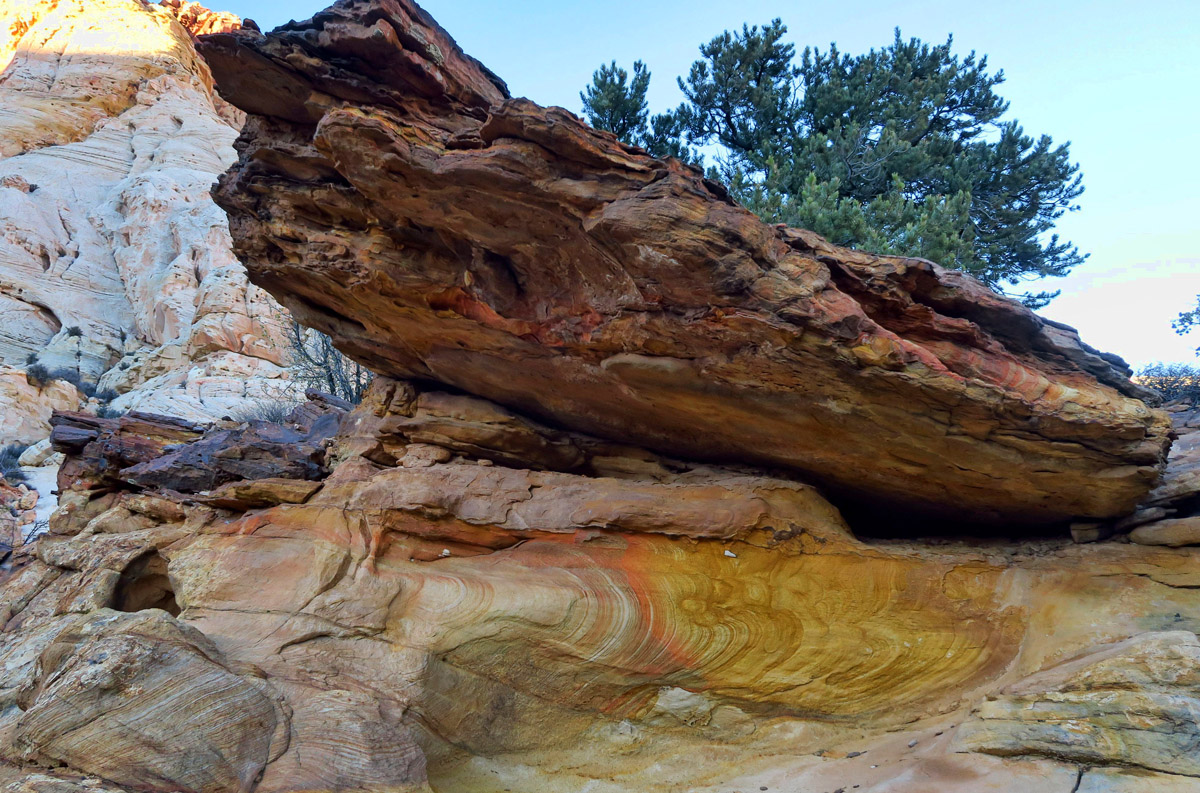 Some beautiful colors in the base of this rock.

It’s a gorgeous day for hiking. With the exception of one day of light rain, the weather has been perfect during my stay. Though the highs have only been in the mid-sixties, it’s great hiking weather. Besides, I am happy to put on an extra layer if it means fewer people. I find myself at the foot of the Golden Throne… all alone.

“I would rather sit on a pumpkin and have it all to myself, than be crowded on a velvet cushion.” ~Henry David Thoreau

16 thoughts on “The Golden Path to the Golden Throne”