No offense to Lower Spring Canyon, but I may have a new favorite hike in Capitol Reef, the Navajo Knobs trail. The author of my favorite Utah hikes reference book, Hiking from Here to Wow, describes most of canyon country as “down and in,” whereas Navajo Knobs is “up and out.” The author states the most desirable hike in the park is a tossup between Spring Canyon and Navajo Knobs, depending on whether you want “depth versus altitude.”

Navajo Knobs is a long hike at 9.5 miles round trip with a 2,500 ft elevation gain. But I just get an early start to make sure I have plenty of time. I will just look at it as breaking it up into shorter hikes by having breakfast on the trail…coffee and left over peach pie! I learned from my hiking pal Chris that a “coffee break” can serve as great pick-me-up on a long hike. So I will plan to stop at the Rim Overlook after the first two miles on the trail. 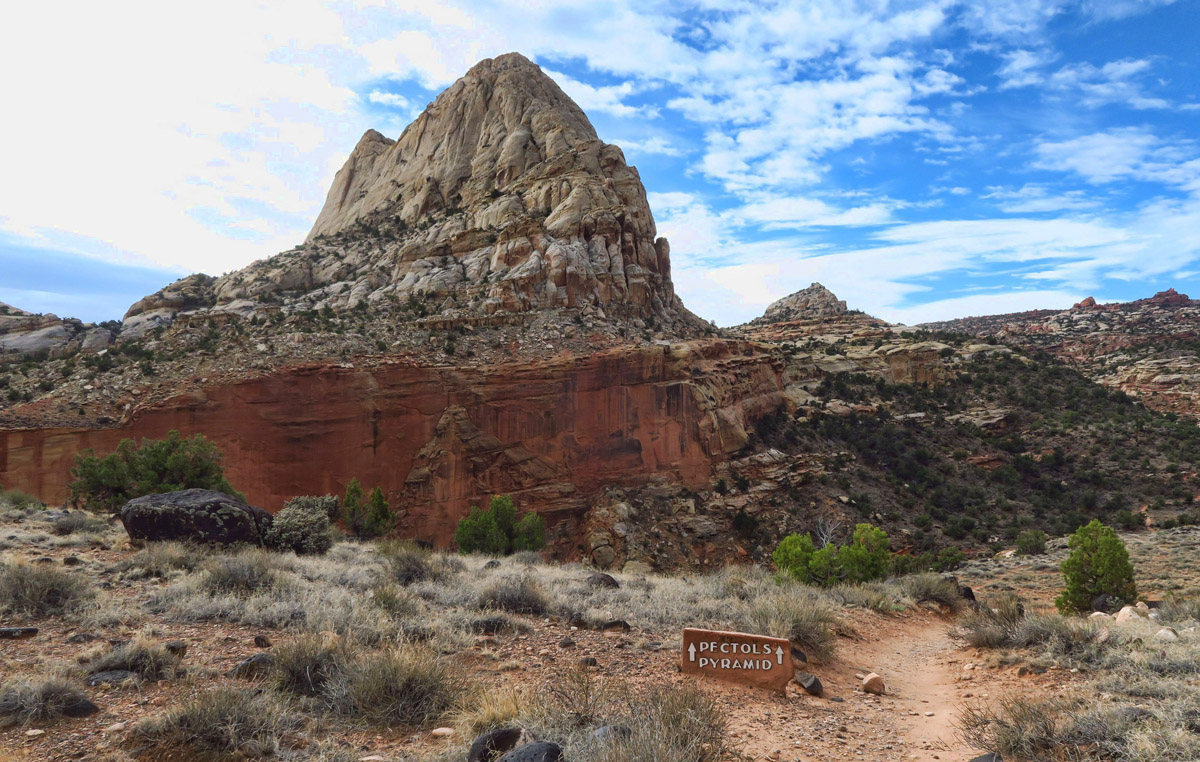 Navajo Knobs shares the same trail head as Hickman Bridge, right across the road from the Pectols Pyramid 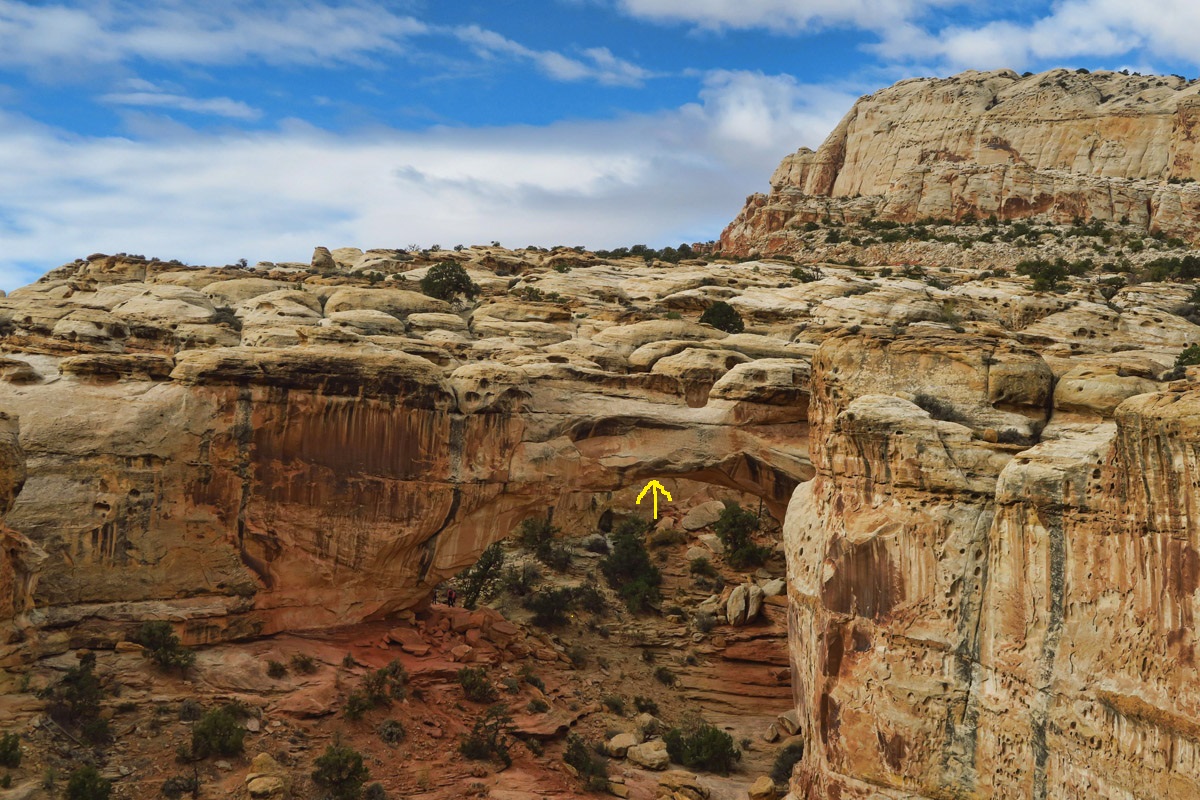 It quickly climbs above Hickman Bridge. There is an overlook where you can see the natural bridge structure from above (see yellow arrow pointing to the arch in the underside of the bridge.) 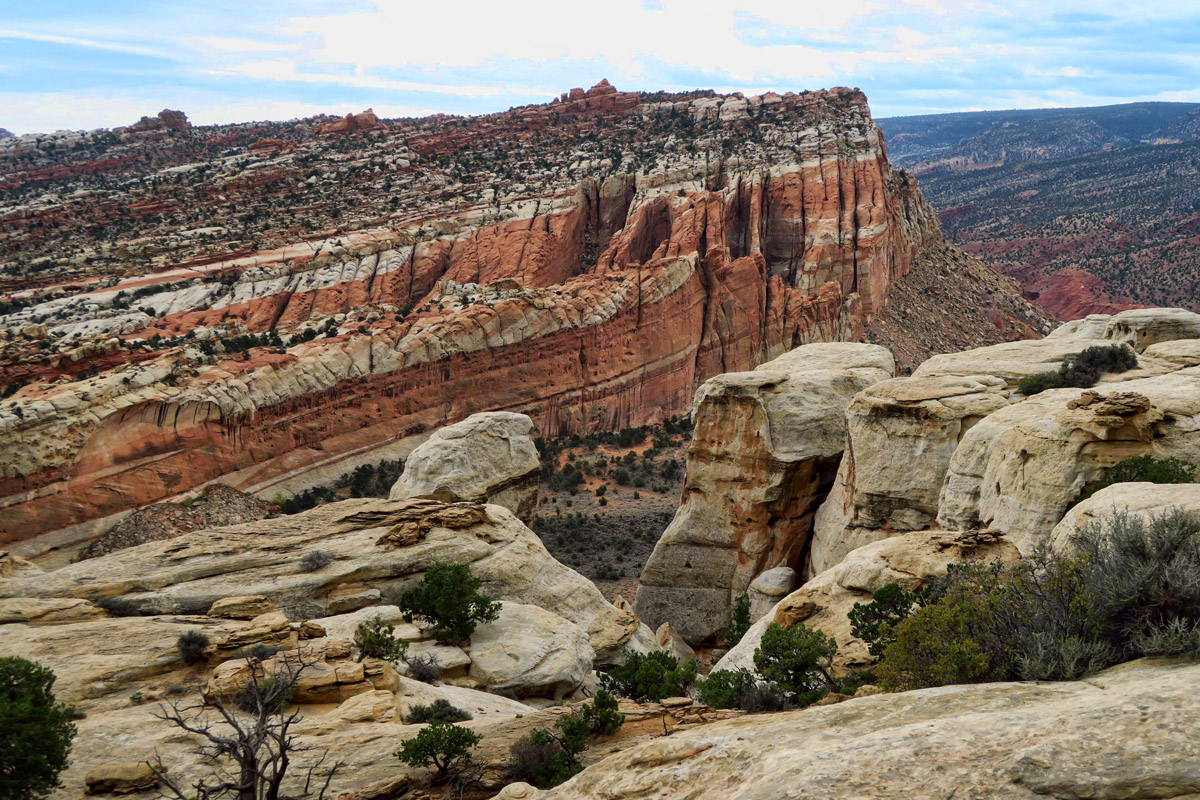 Although the view is beautiful from Rim Overlook, the best is yet to come. 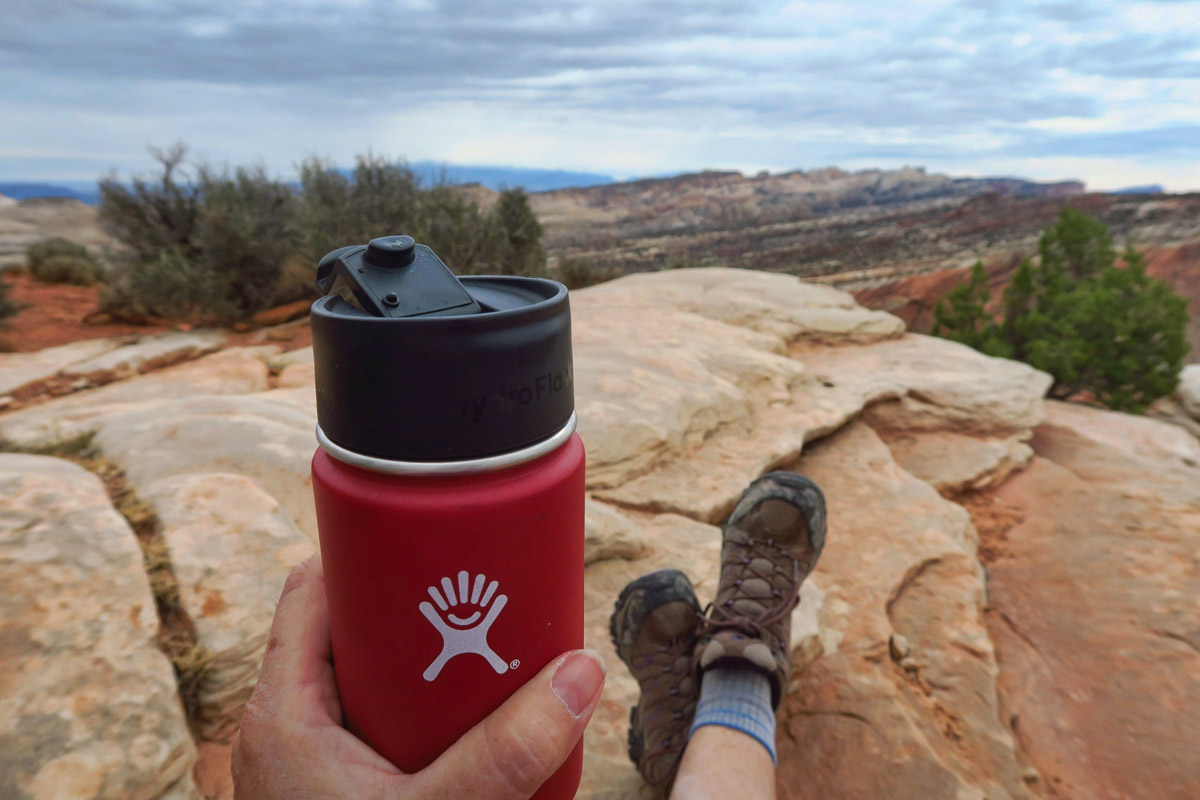 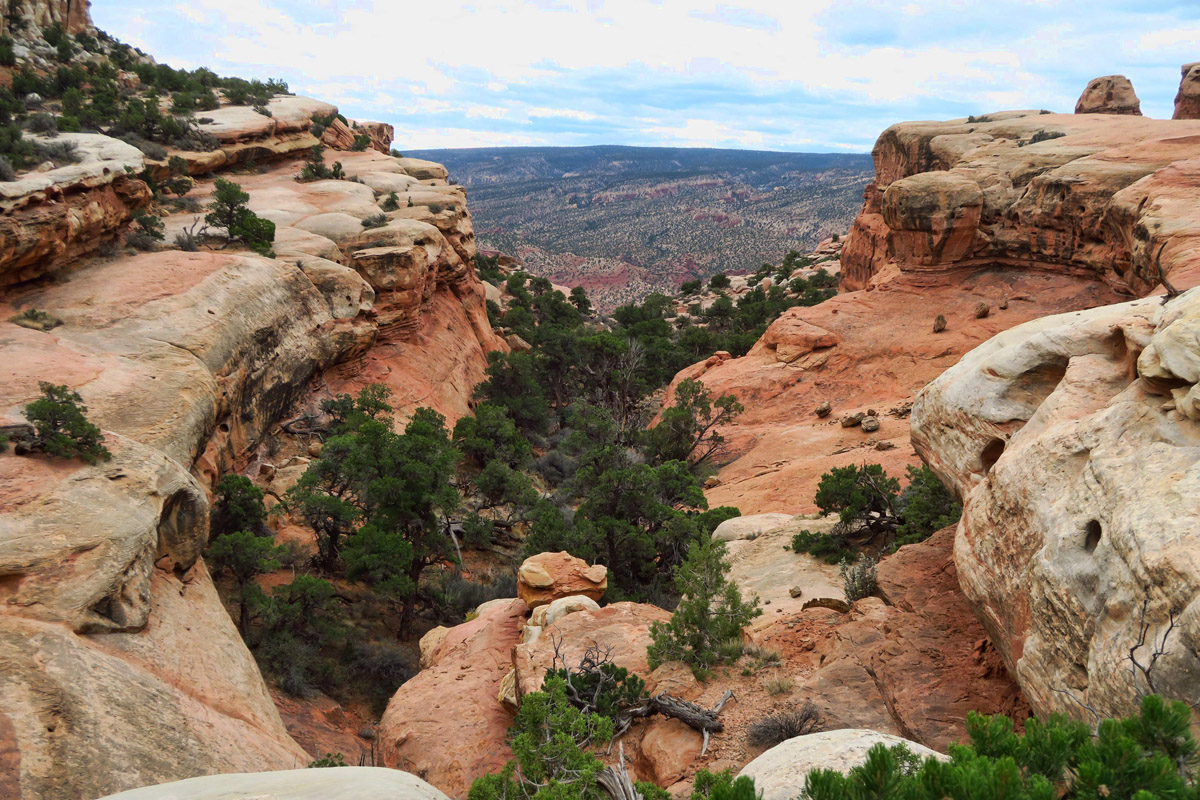 The trail snakes around many of the drainage slots.

All three hikes, the very popular Hickman Bridge, the Rim Overlook, and Navajo Knobs all start from the Hickman Bridge trail head along Hwy 24. The parking lot is already half full, even though I am there early. The trail is pretty crowded, but once we reach the split in the trail, everyone else goes straight toward Hickman Bridge, while I turn right and continue on up the hill, feeling a great sense of relief that I seem to be the only one not going to Hickman Bridge today, grateful to leave the crowds behind. I meet only two other people along the Navajo Knobs trail, and the rest of the hike I have this magnificent playground all to myself. 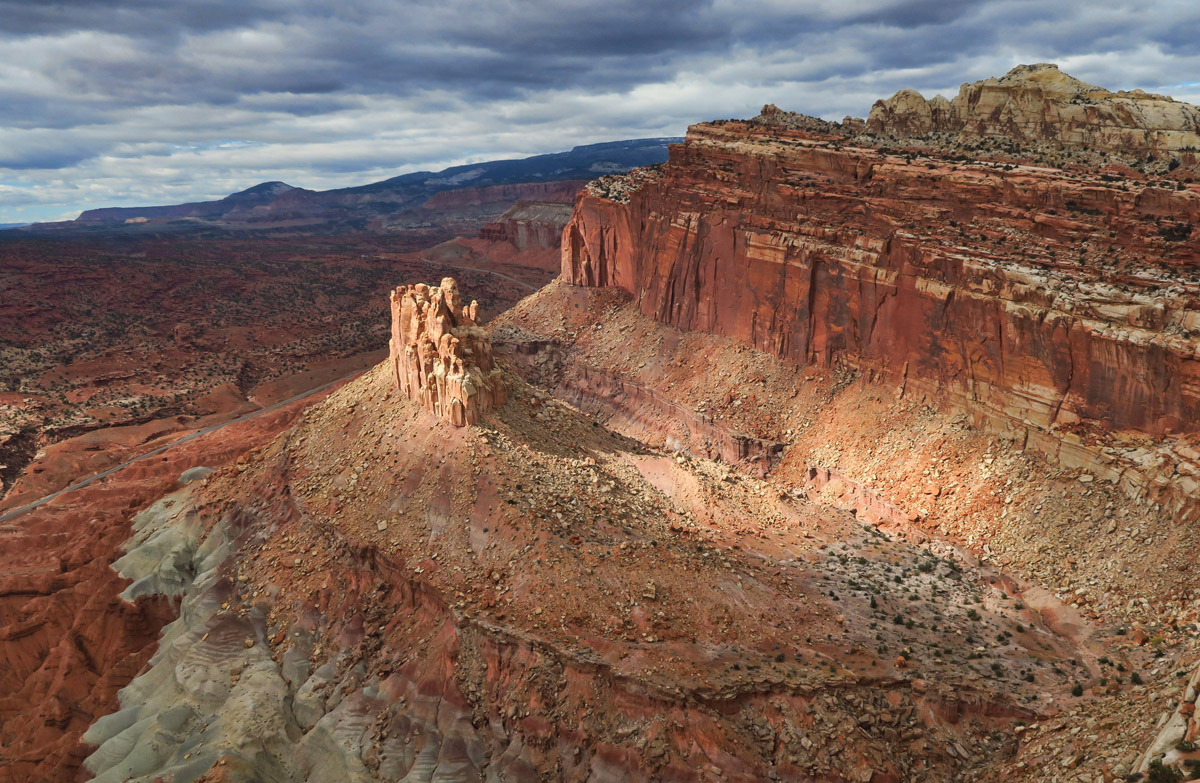 Overlooking “The Castle,” my favorite view along this trail. 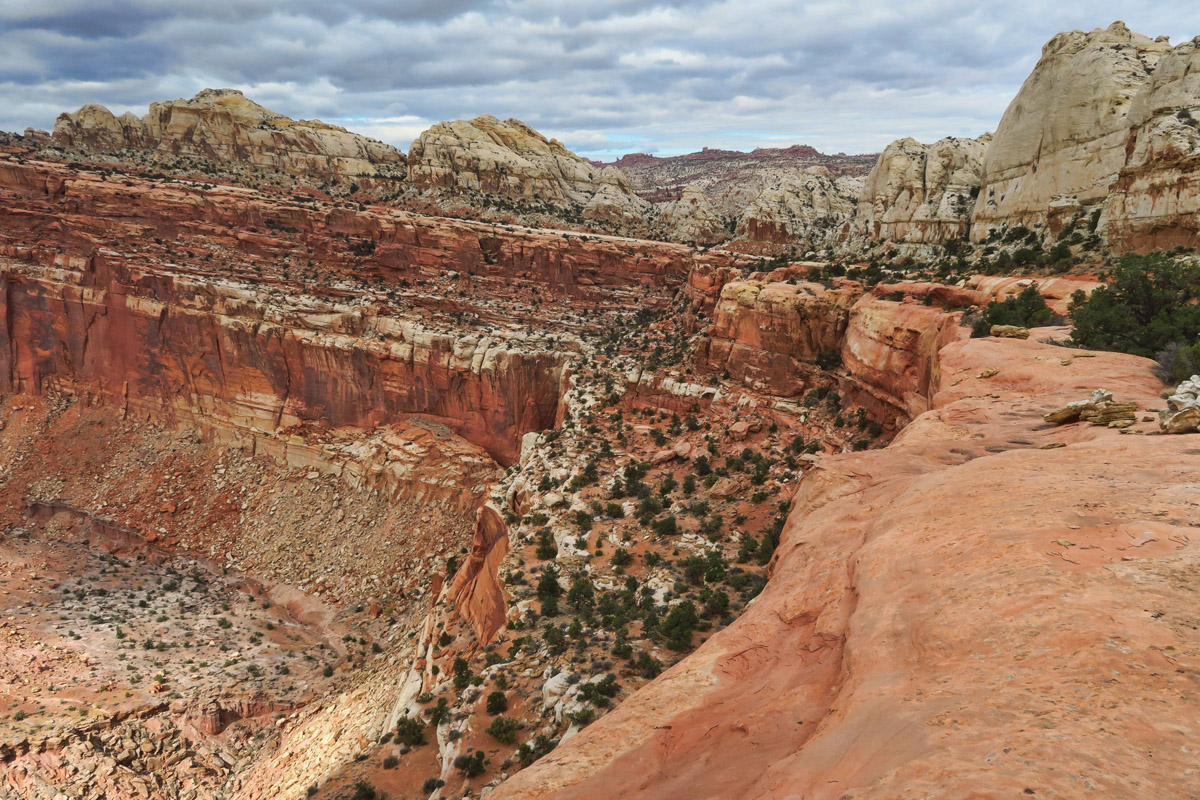 Once you reach the Rim Overlook, there is a lot of slight elevation change as the trail goes up and down to get around the promontories. 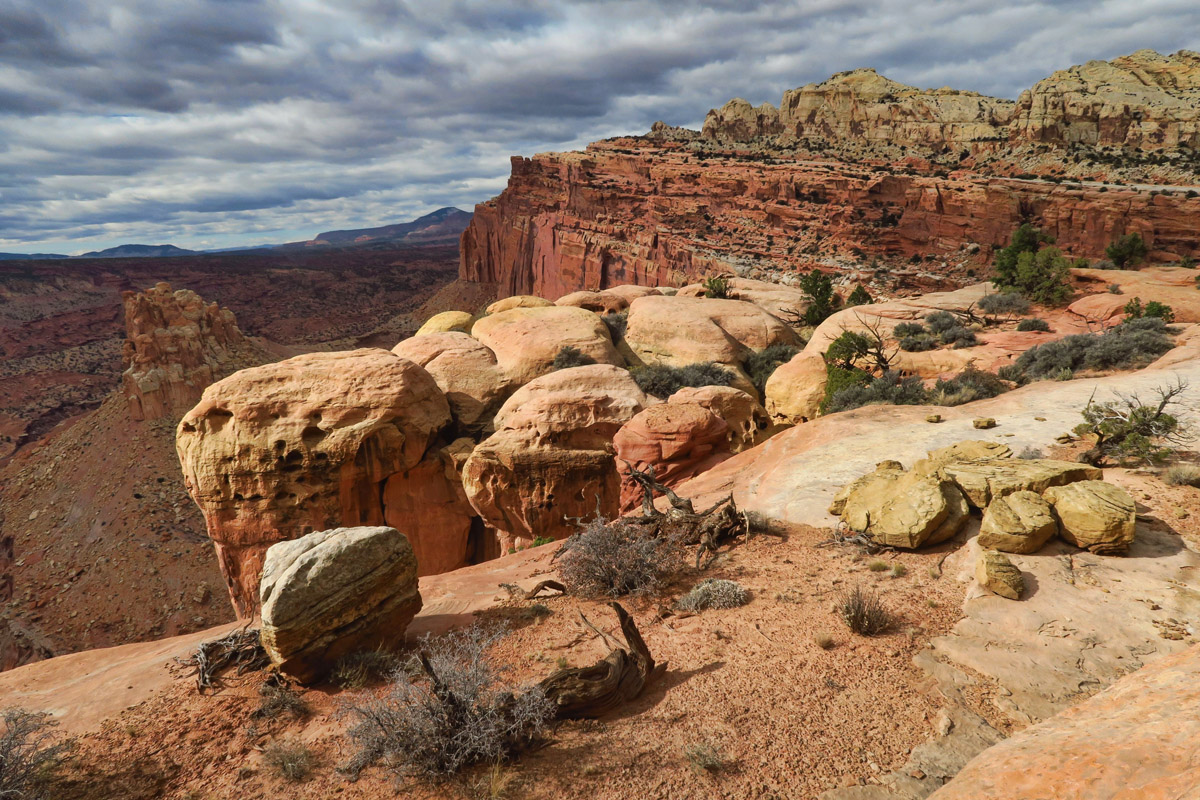 These round mounds of sandstone make me think of bread loaves. 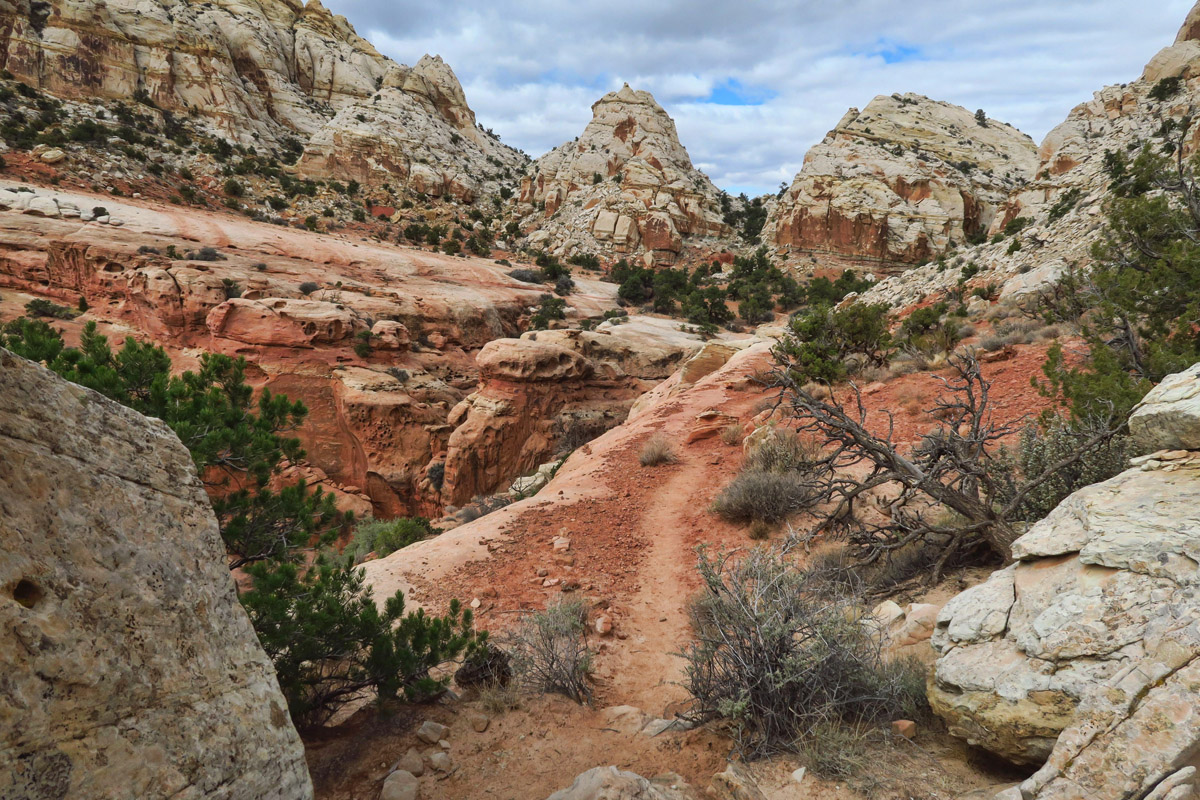 The trail follows the undulating rim the entire way. 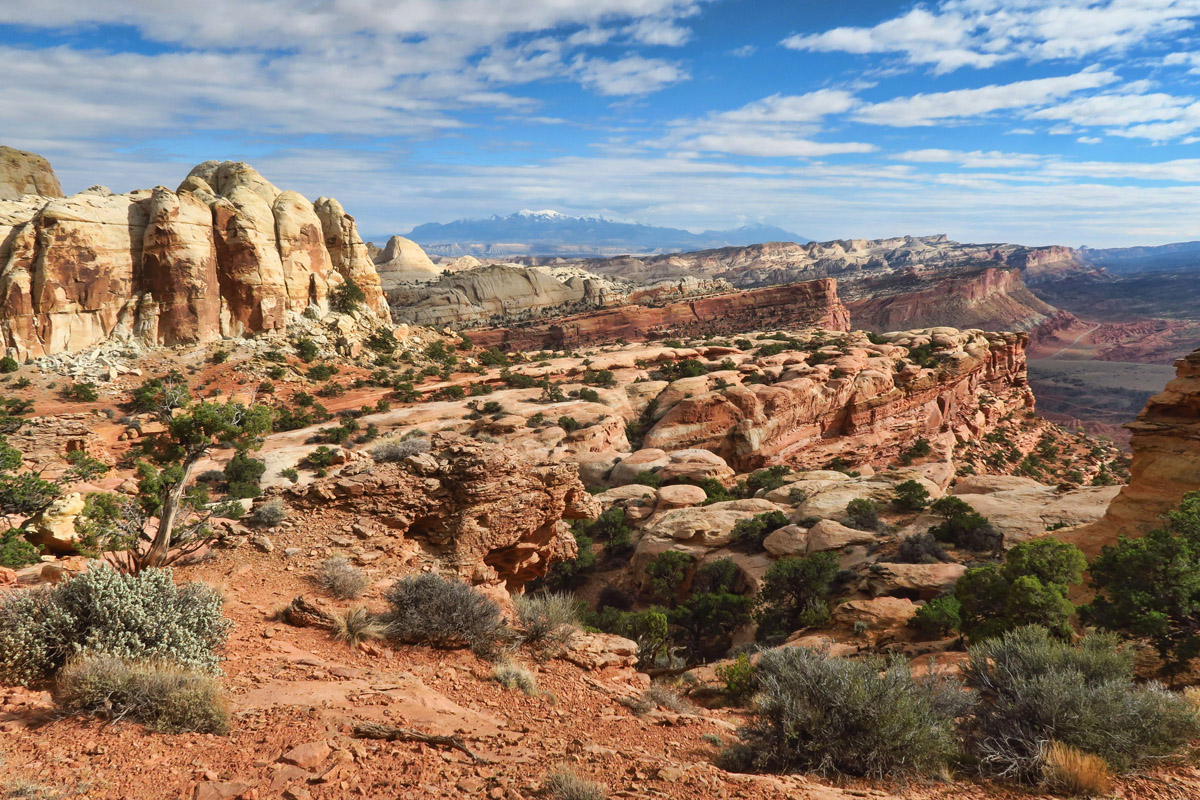 The formation that gave birth to Capitol Reef is the Waterpocket Fold, a feature that appears in posters, post cards, the park’s brochure and their movie. But what is it exactly? One of my goals during this visit is to learn more about the formation, and what exactly it has to do with “water pockets.”

After watching the park movie and reading up on it, the best way I can explain it is to imagine a layer of cloth lying flat on a table. Place both hands at opposite edges of the cloth, and scooch together until the fabric buckles up in the center in the shape of a bell curve. Now imagine one side of the bell curve has a more gradual slope than the other side. Over millions of years, water collected in the pockets of the gradual slope, and that water began to erode the more gradual side of the fold. 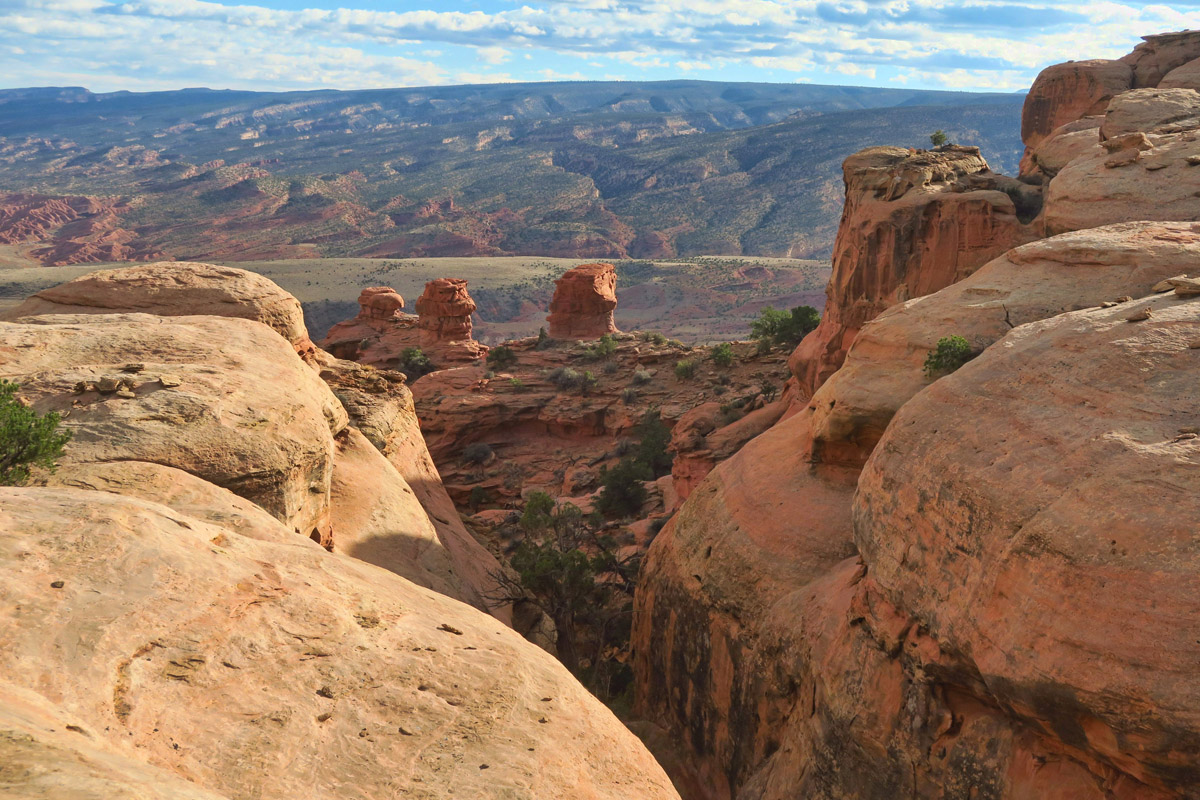 I see a few “false knobs” along the way, but these are wingate sandstone, not navajo sandstone. 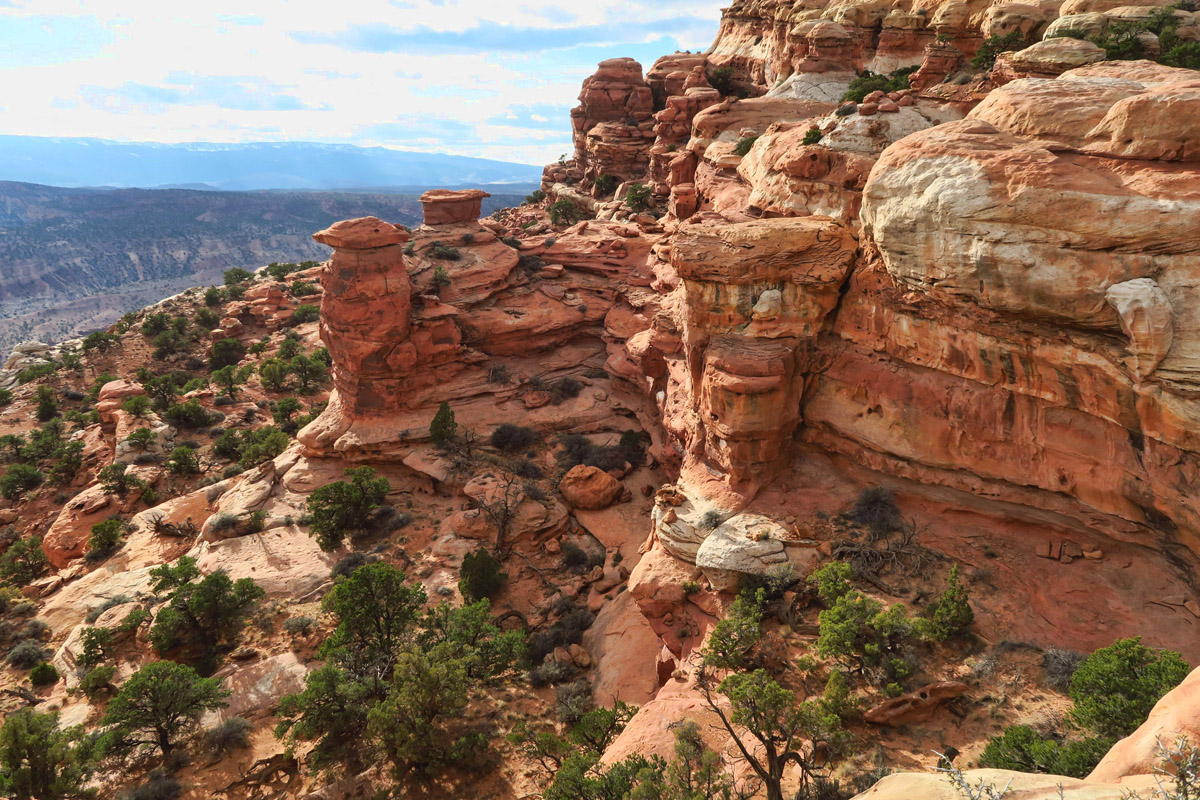 Lovely knobs, but not the ones I am looking for… 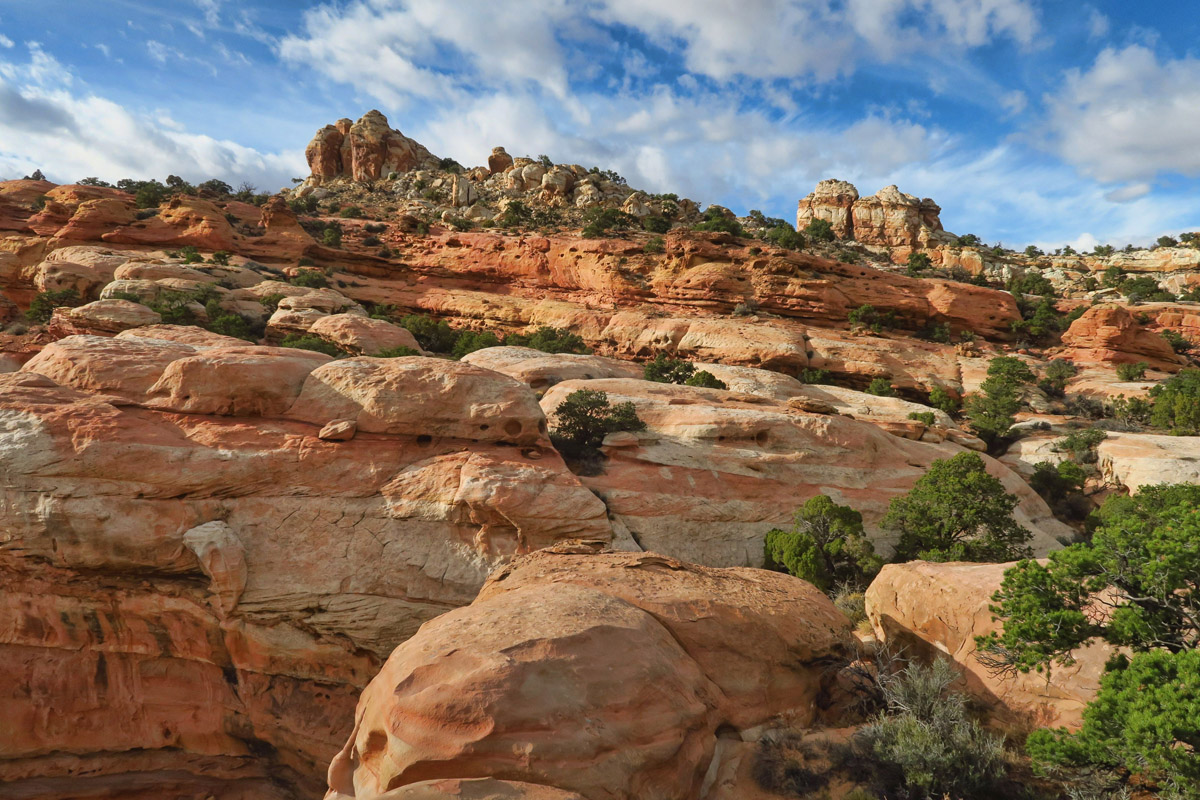 Those are the “Navajo Knobs” there in the distance where the rocks jut up in the upper left of the photo. 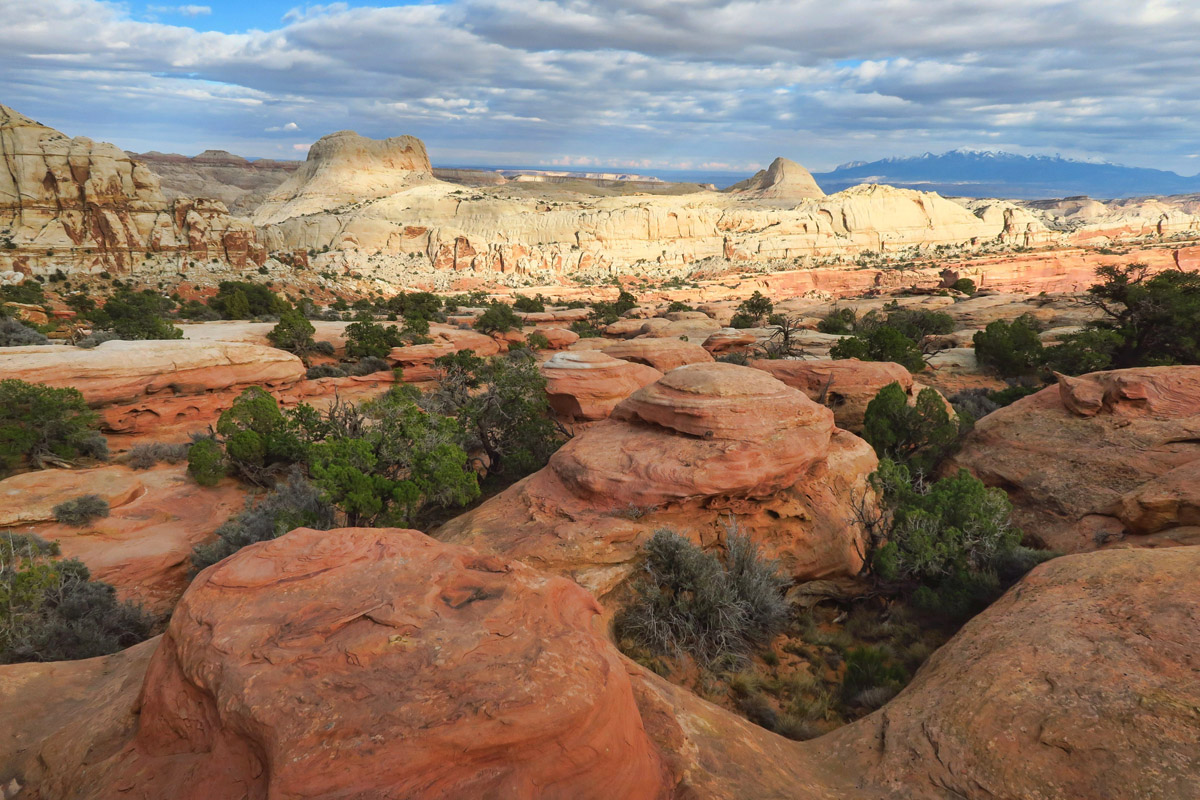 If 9.5 miles is not long enough for you, there are acres of sandstone to wander at the top of the rim. 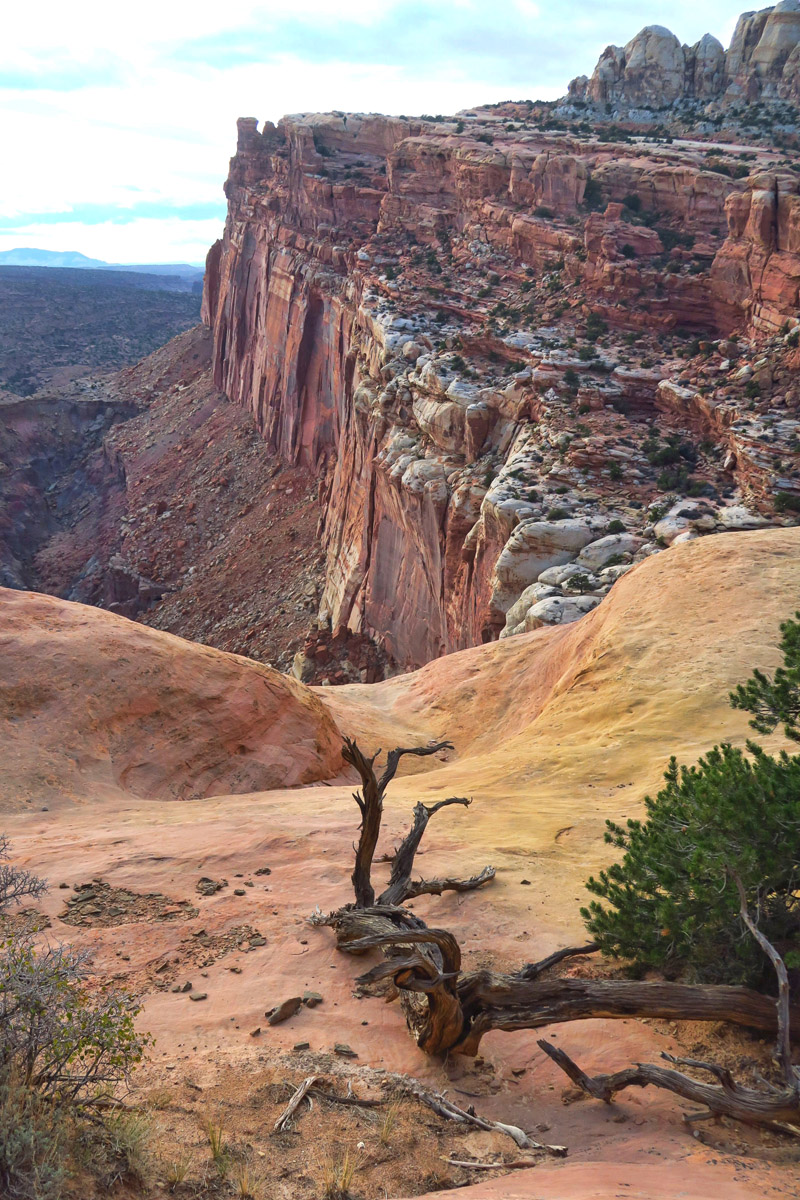 Seeing the Waterpocket Fold from the Navajo Knobs trail finally brings it all to life. Standing there looking out over the undulating rim, it becomes clear how the earth just warped…then the layers of different types of sandstone eroded off the edge at different stages. It’s a fantastic perspective of the entire park, as I now stand on the tops of all those cliffs I’ve been driving past in and out of the park.

The trail follows the edge of the fold, sometimes right along the ledge, in and out, up, down and around each one of these promontories. The scenery is such a hodge-podge of dentiled cliffs, fluted walls, angular chiseled rocks, rounded mounds of sandstone, and striated waves that it’s visually stimulating for the entire hike and back. 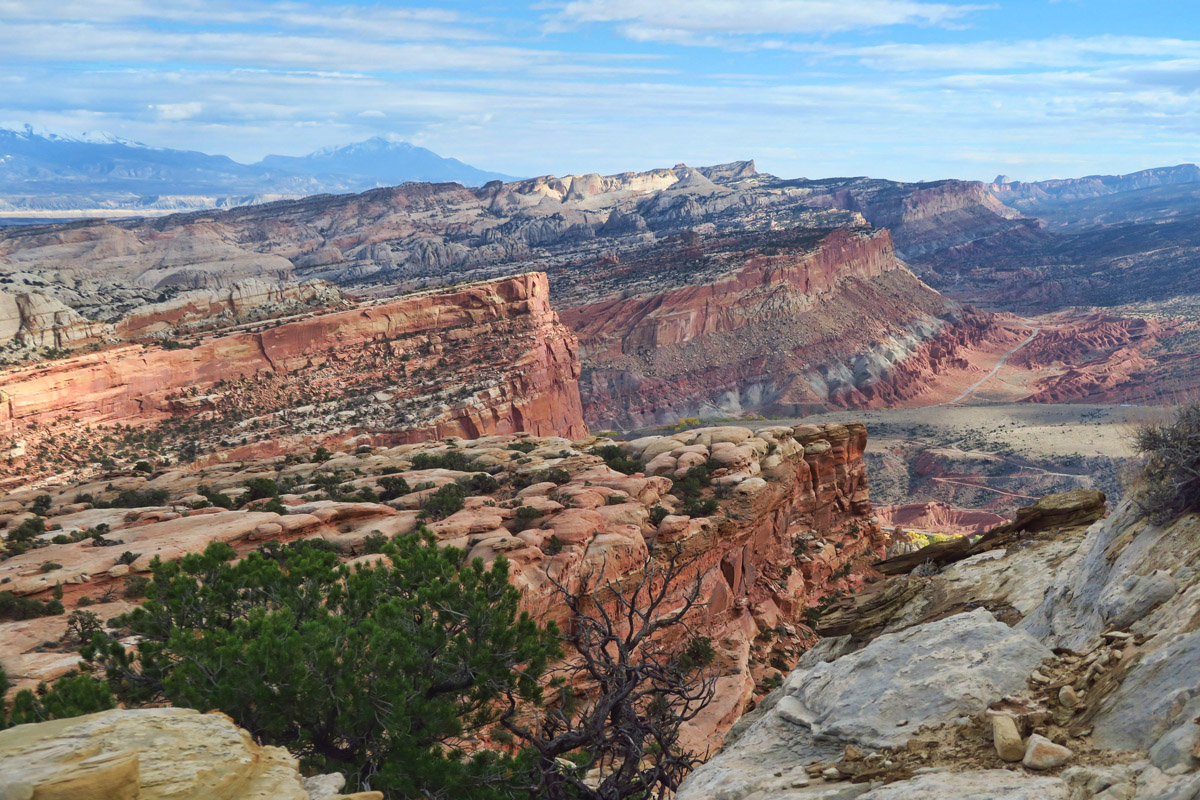 Looking back across the Waterpocket Fold from this elevation, it makes more sense to me. Using the mountains in the far distance as level perspective, it’s crazy how the earth just seems to have warped! 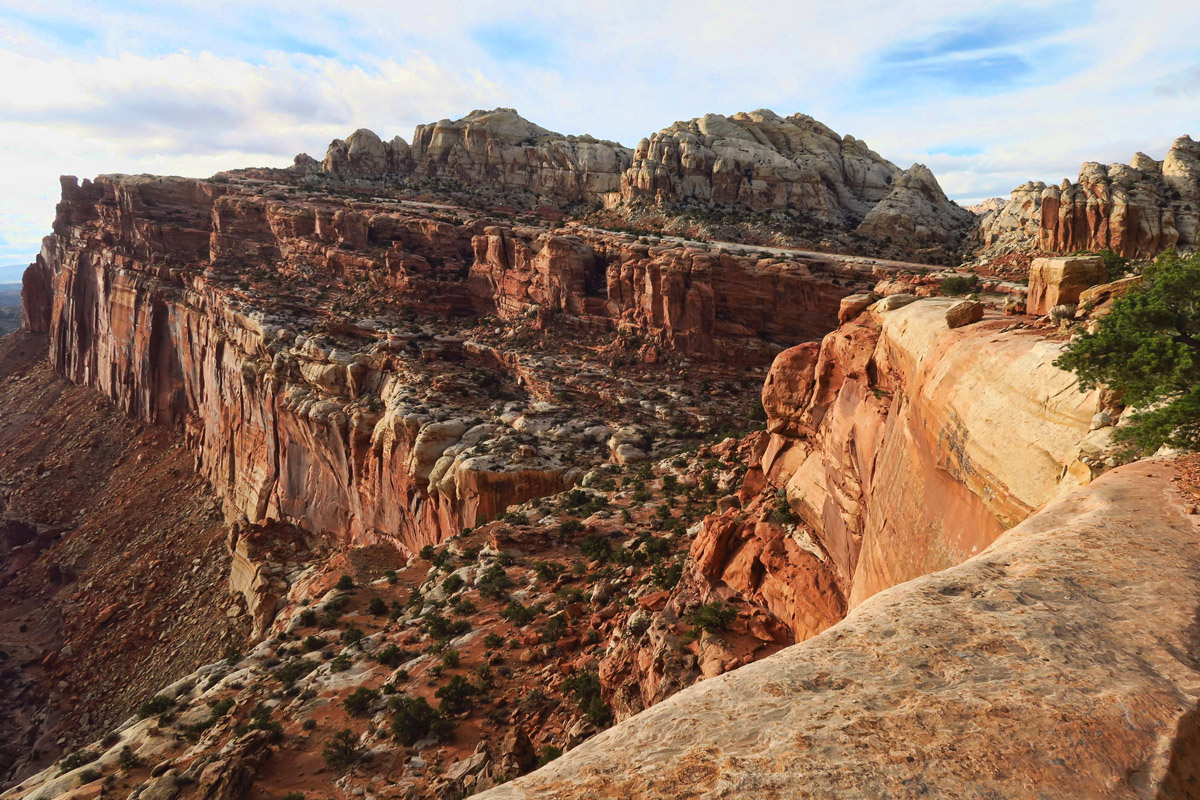 If the southern slope of the fold was more porous, it’s easy to see how water could have collected and eroded the slope. 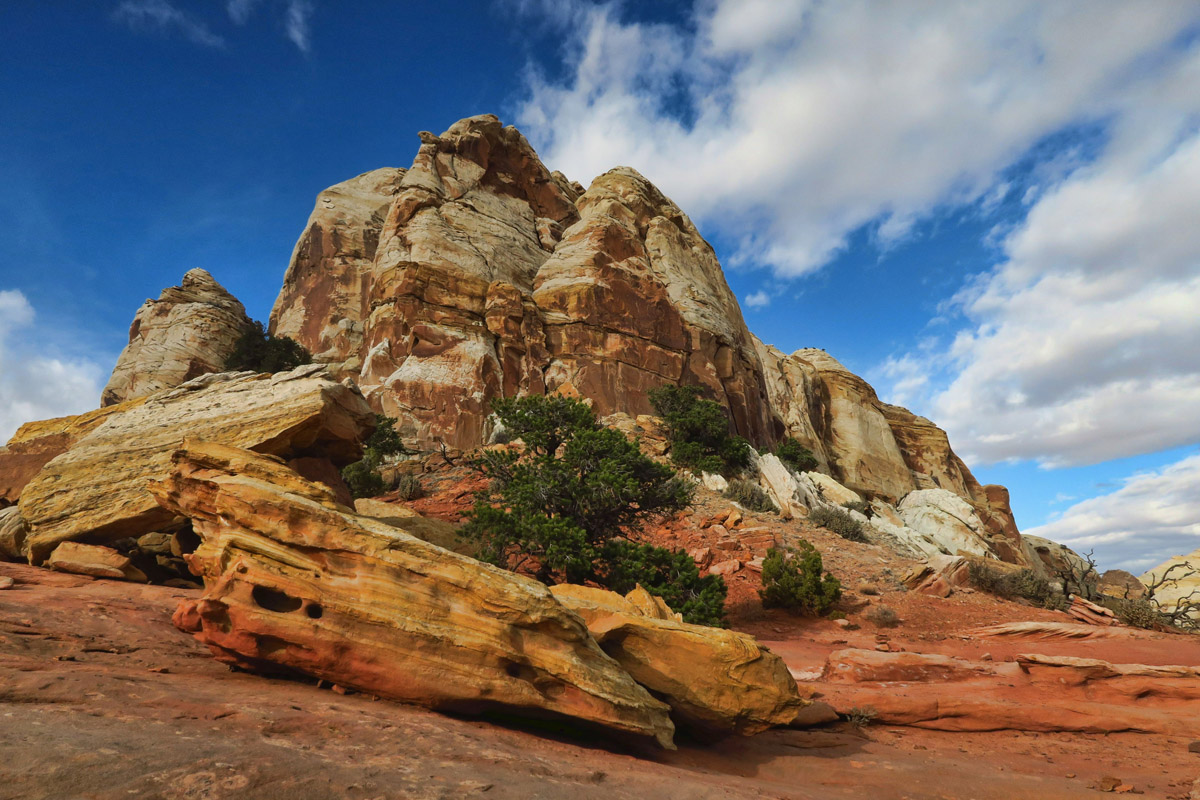 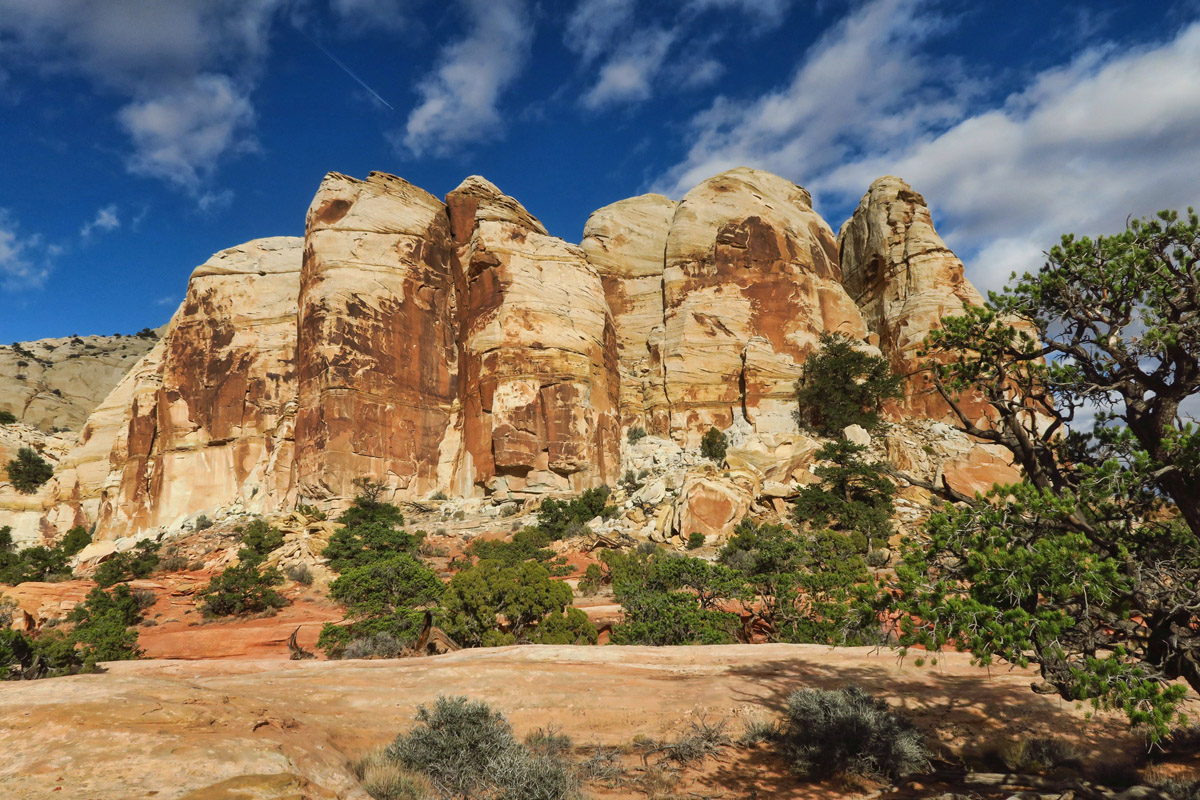 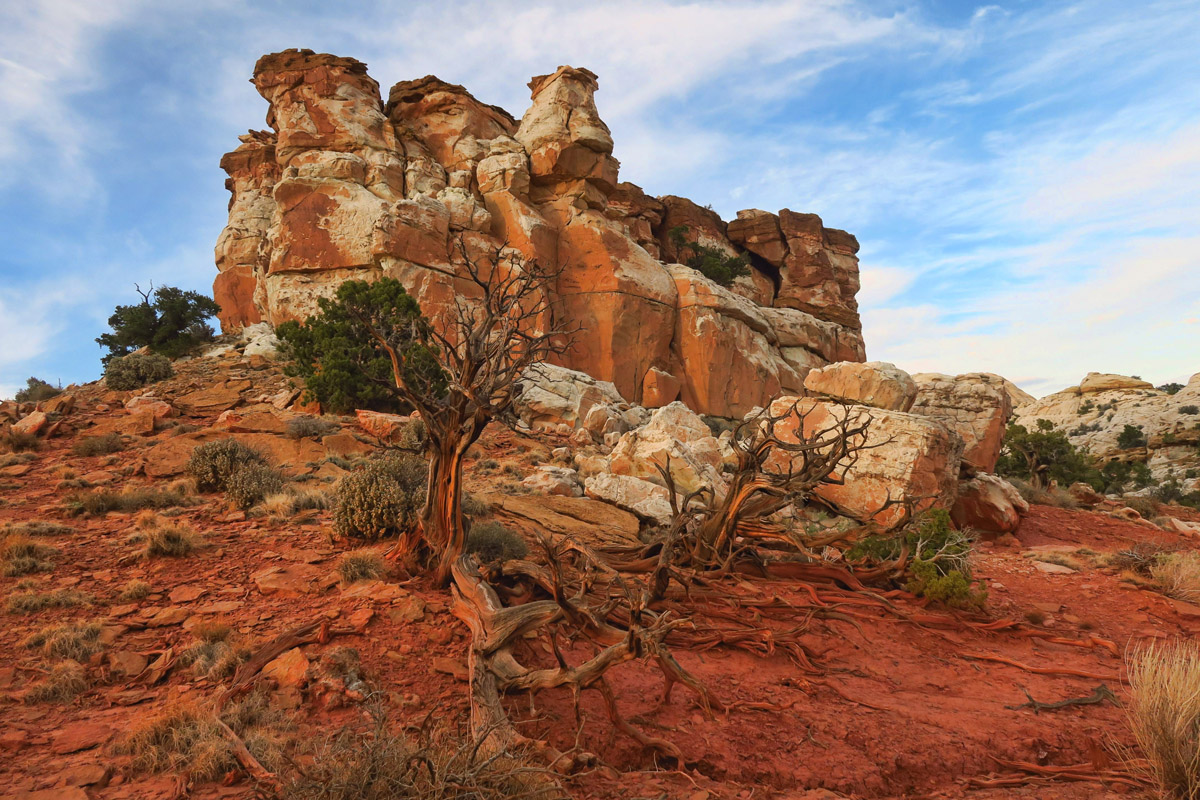 As I near the knobs, I run into the only people I’ve seen in the trail. They tell me they have just come from scrambling to the top of the Knobs where they just had lunch. “Head toward the giant rock that looks like a rusty milk can, then turn left and start scrambling. We had lunch up there. It’s 360 ° views from up there!” 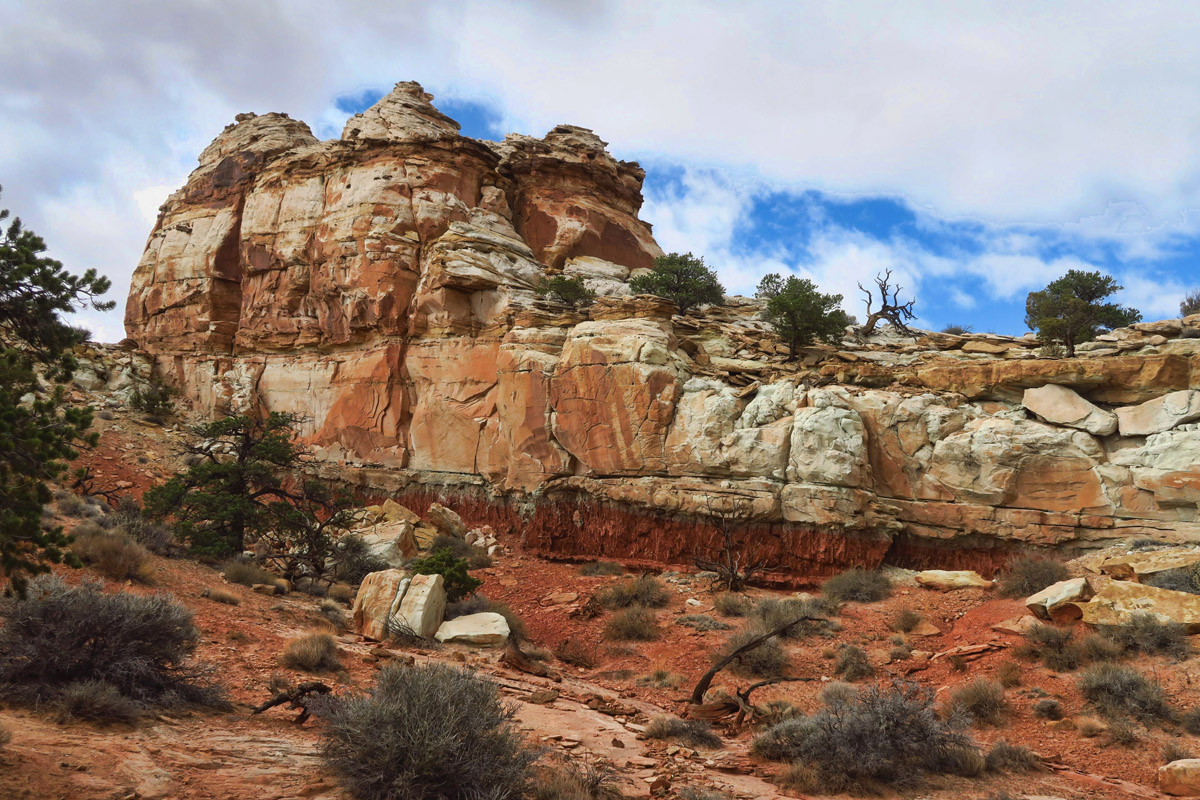 The Knobs. The trail leads to the saddle on the right. It’s a short scramble up to the left from there. 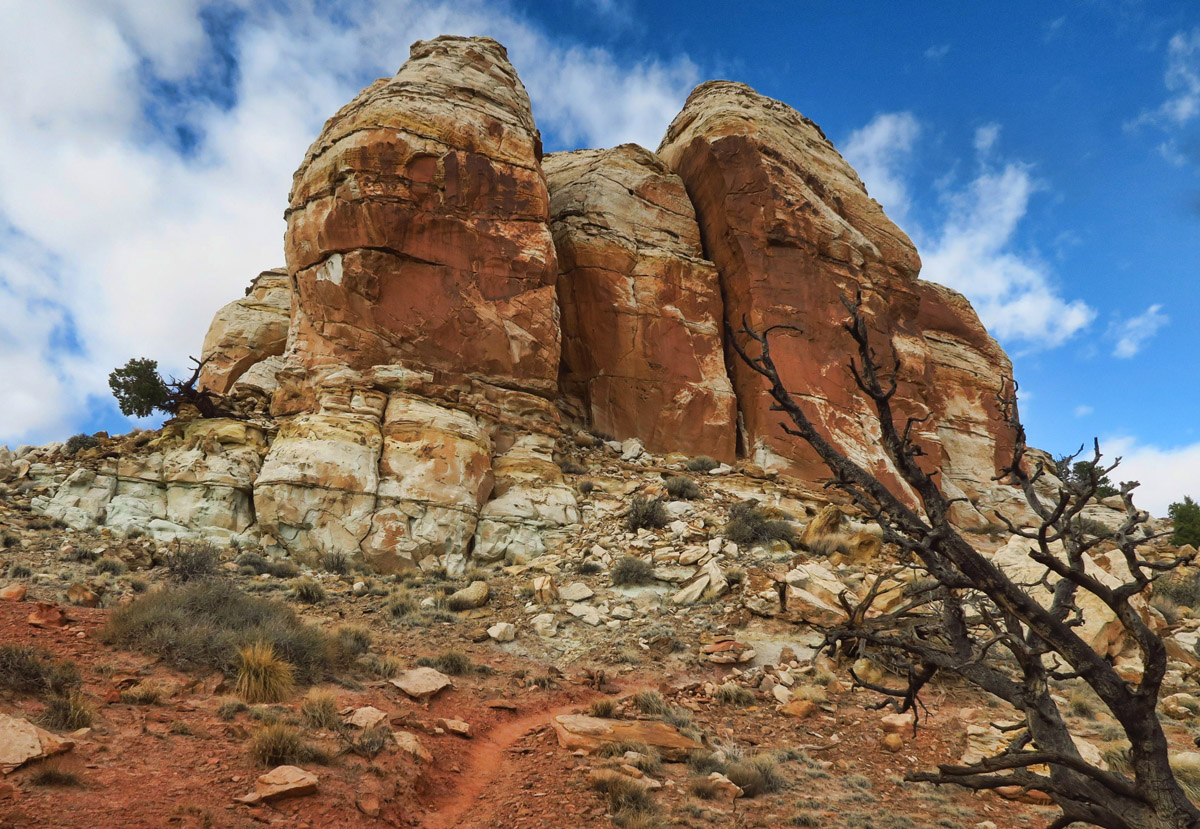 Front view of the Navajo Knobs. 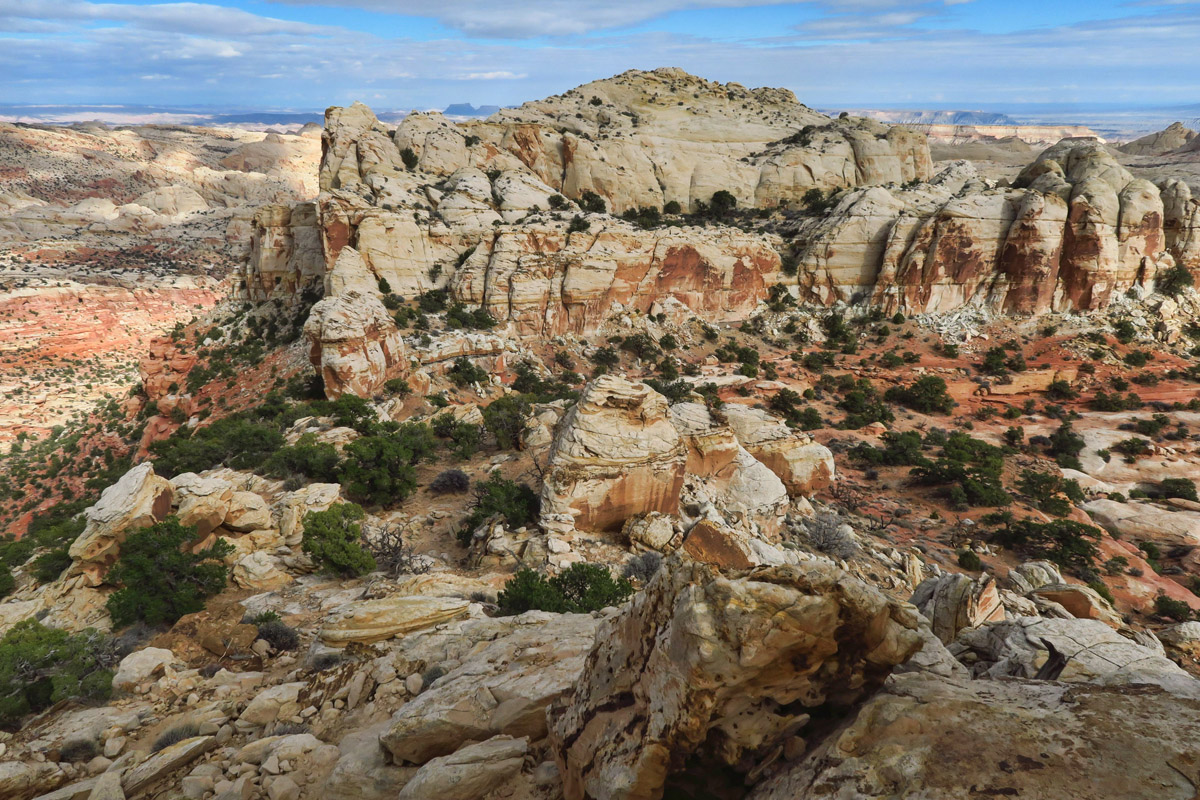 This just looks like a mass jumble of rocks, but it’s the view looking back down the scramble to the top of the knobs. Impossible to tell in this photo, but that big giant rock dead center of the photo is looking down on the “rusted milk can” landmark. 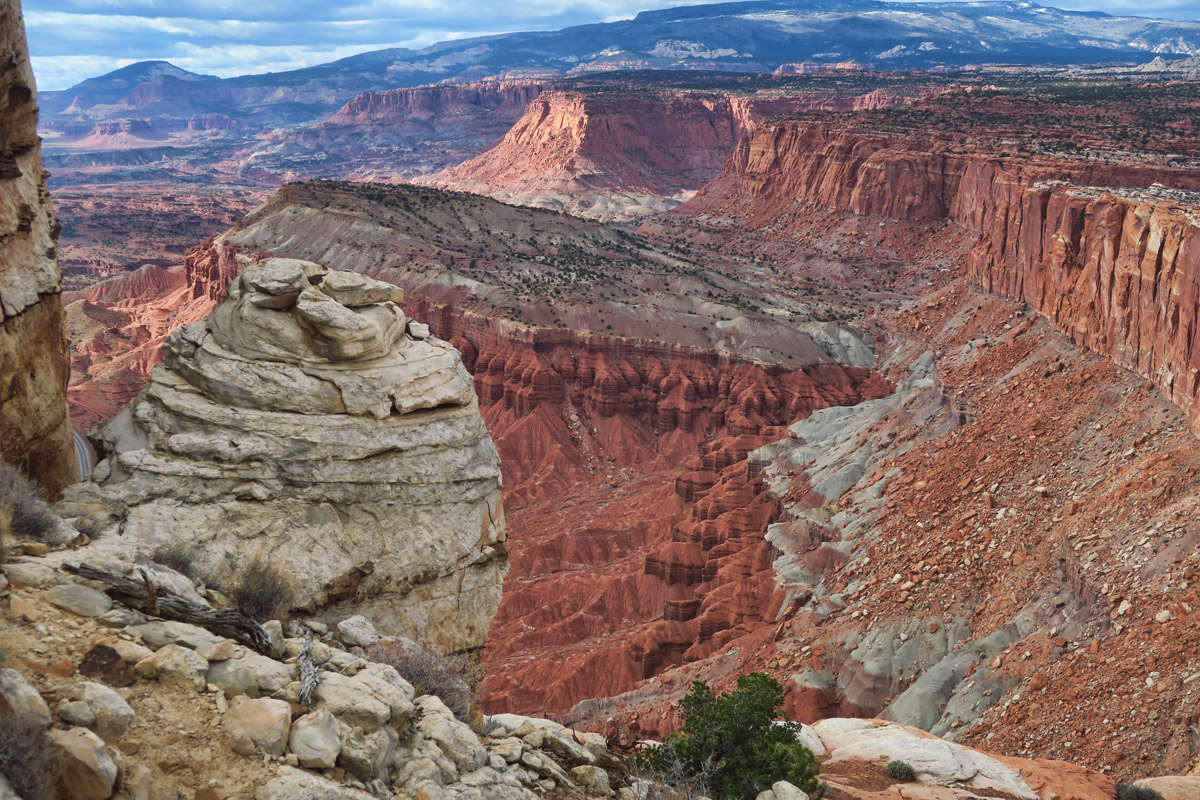 Once over the knobs, you can see the “reef” looking west. 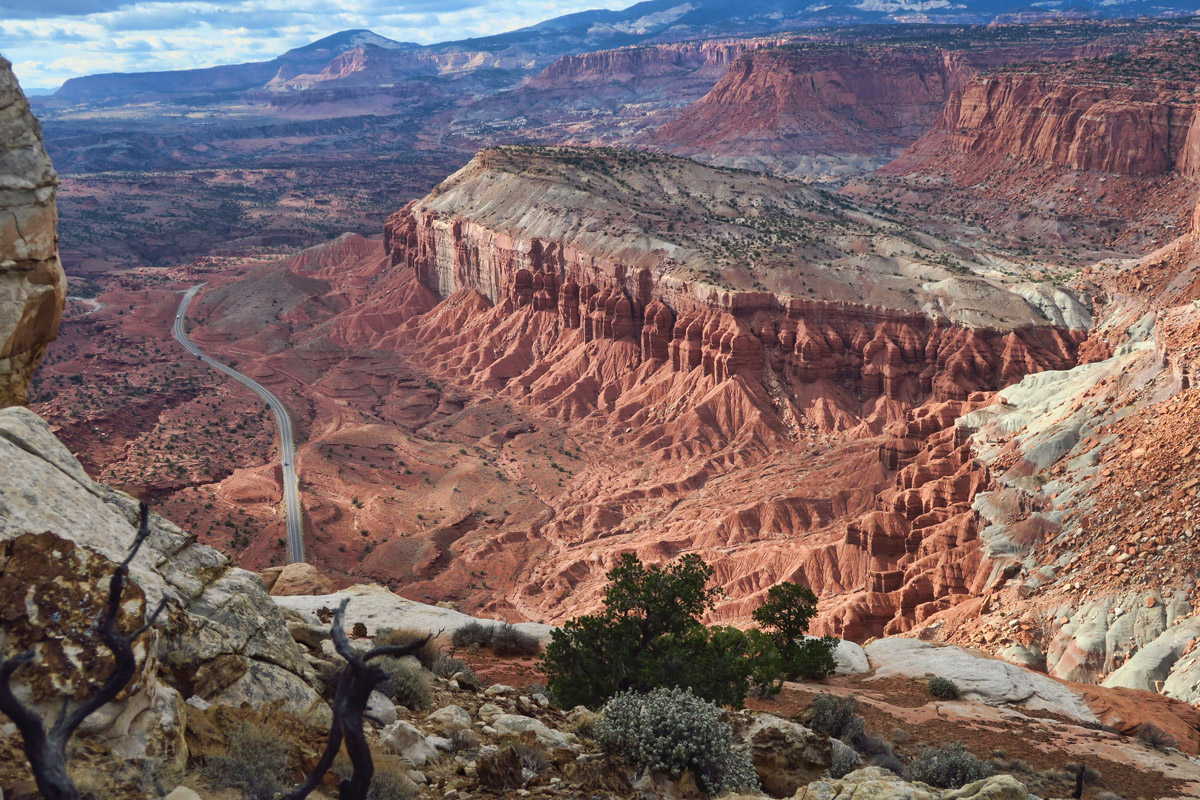 That’s Hwy 24 down there, leaving the park heading towards Torrey. 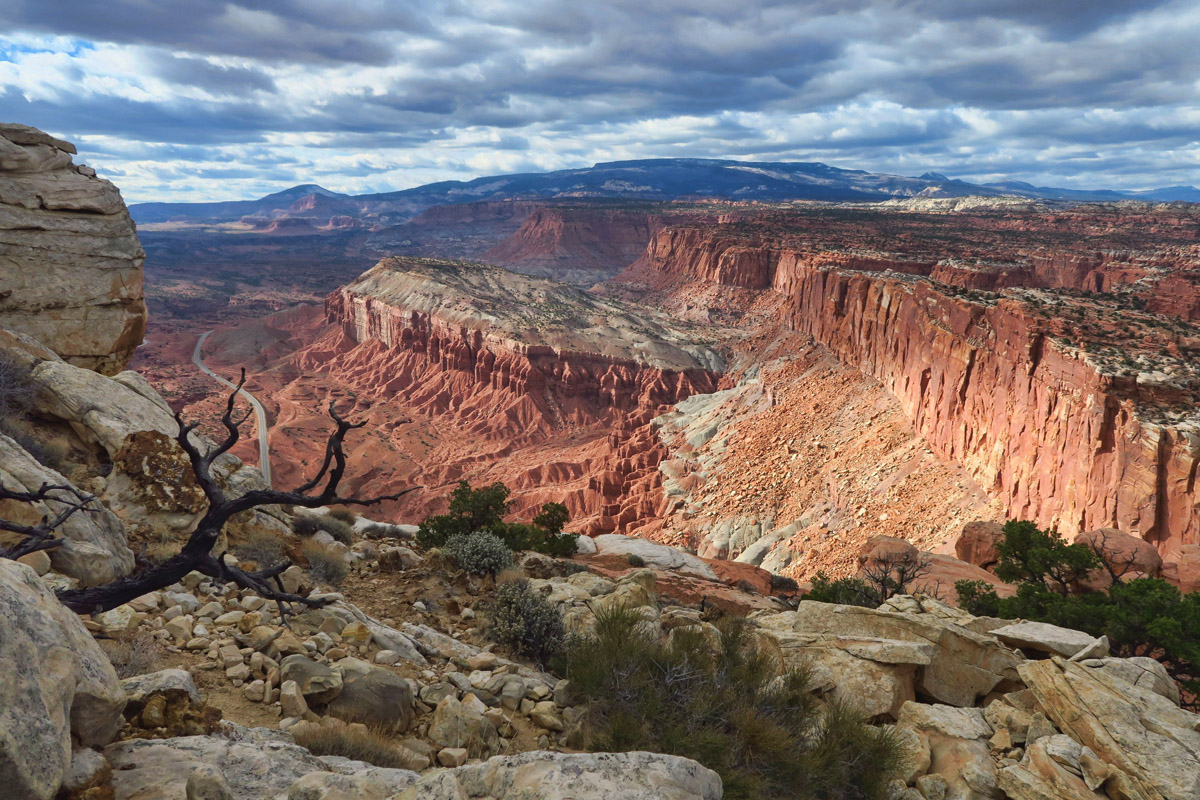 Views are breathtaking from this point…but not exactly a relaxing rest stop. 😉

I decide I’ll do the same thing, but once I get up to the top of the rock mound, I lose my appetite. I don’t have a fear of heights, but sitting at the top of a precarious perch long enough to eat a PJ&J gives me too much time to ponder the perils. So I head down and save the sandwich for a later stop. 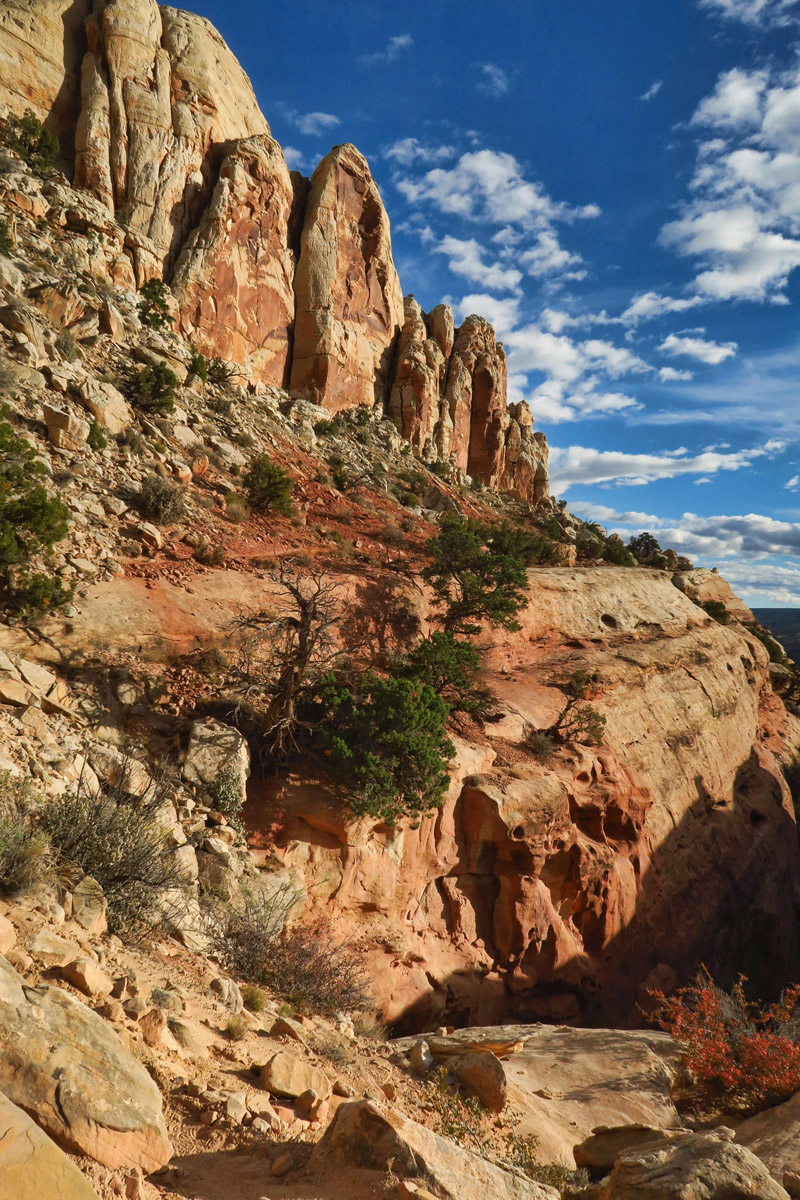 The hike back the same way I came is equally beautiful. 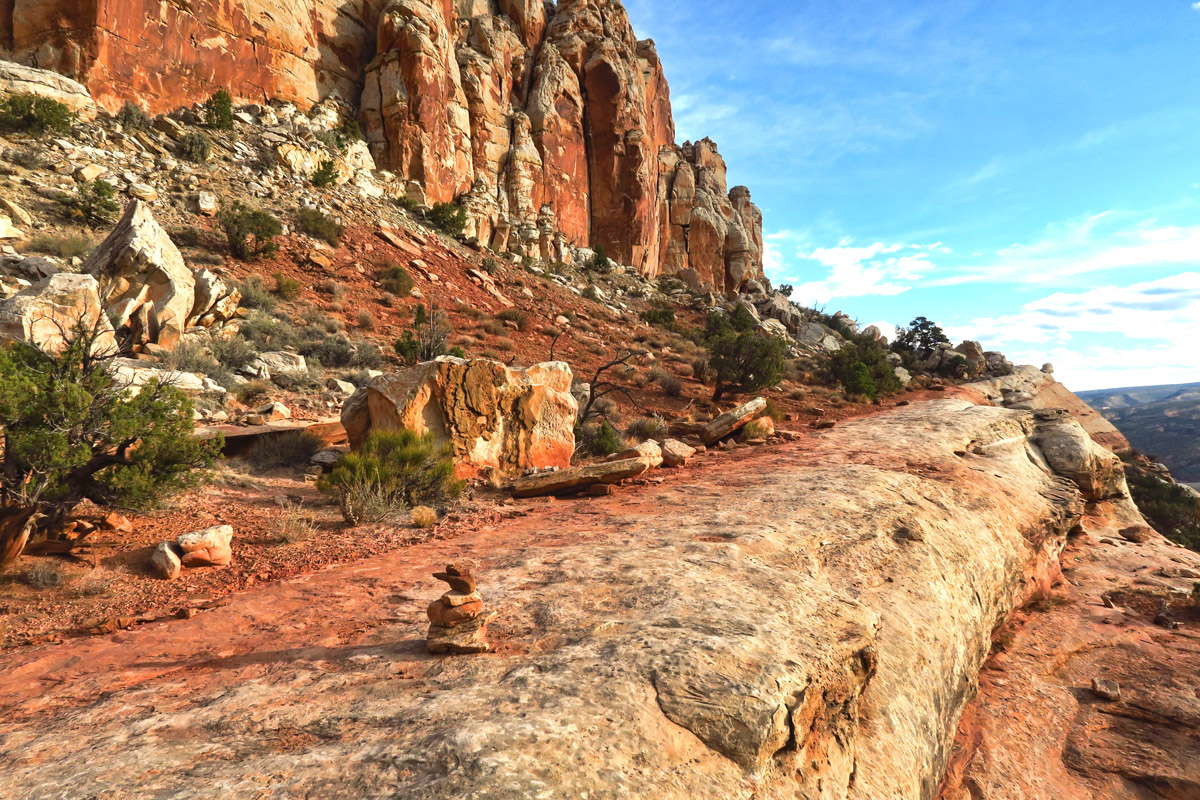 I don’t usually like an “out and back” trail, but this one looks different both ways. 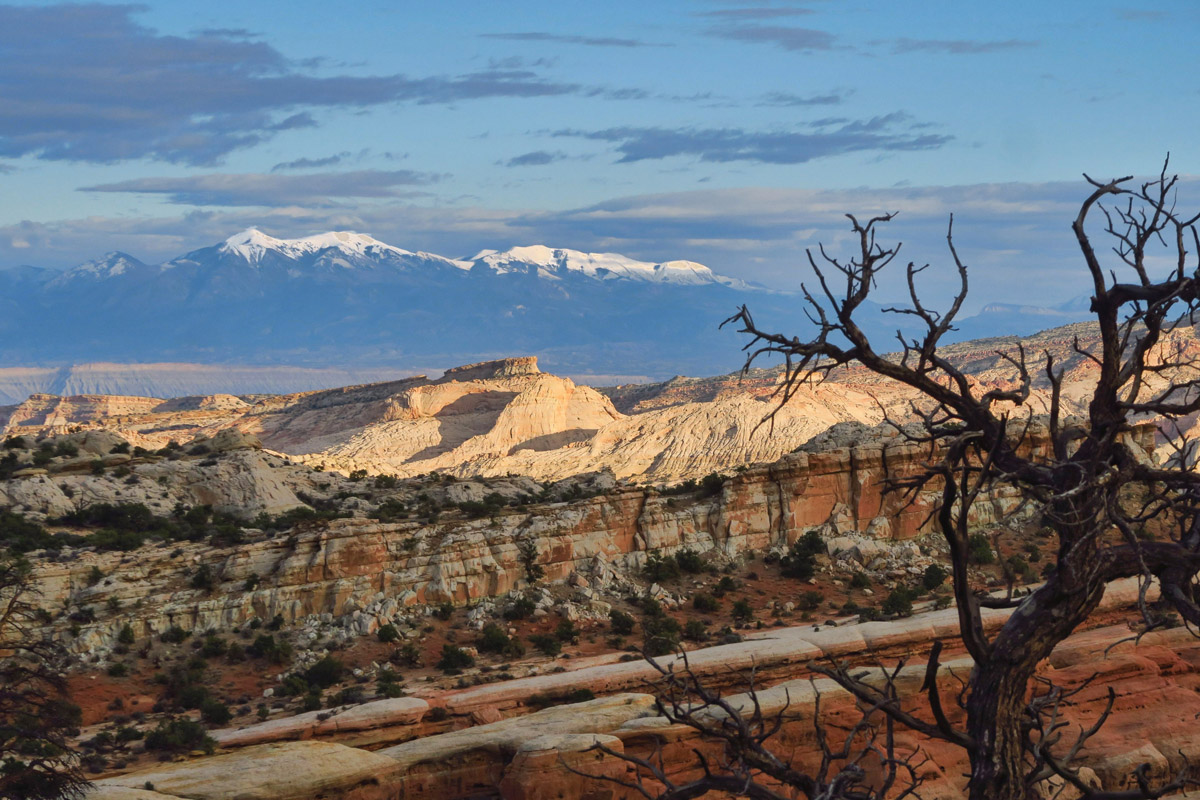 The beautiful snow capped Henry Mountains in the distance. 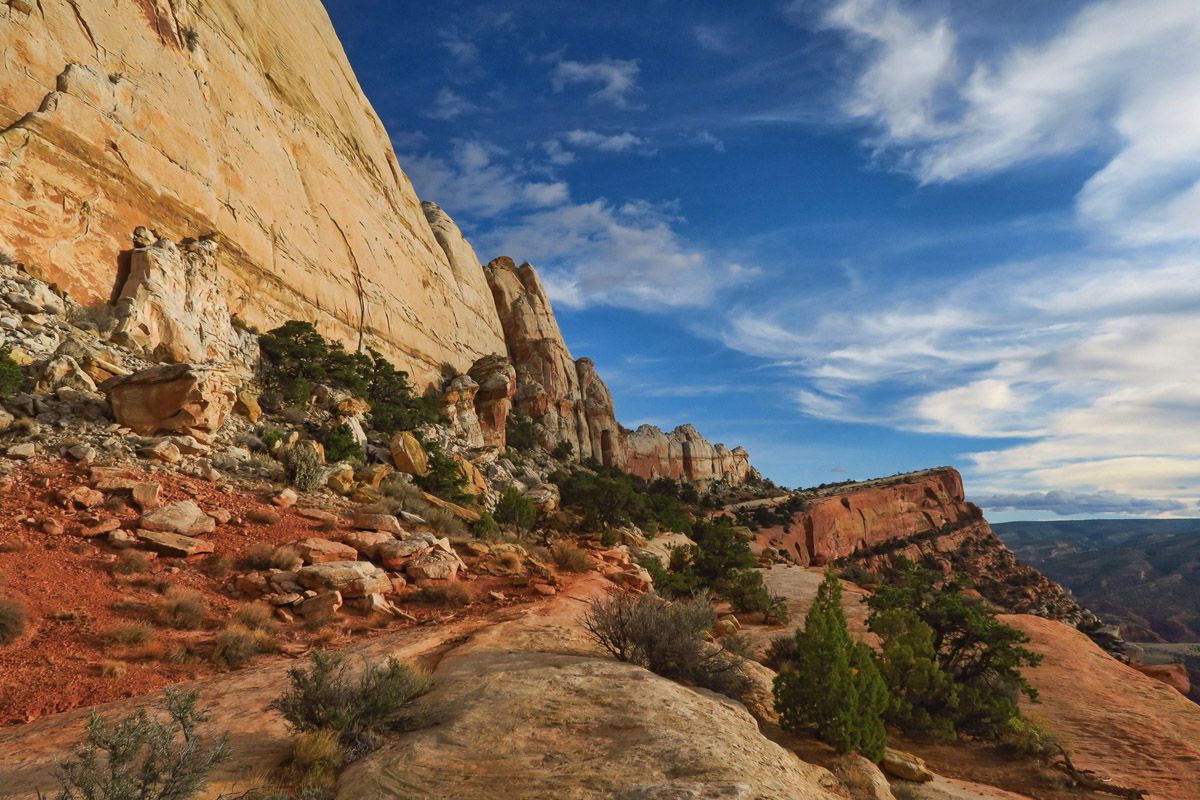 I would do this one all over again…

The hike back is equally rewarding as the hike in, as the clouds have parted and the light is changing rapidly.  With darkness coming so early though, I have to make my decent with one eye on the time, otherwise I could stay up here forever!