I have this behavioral quirk (okay, one of many) that I have come to recognize about myself.  Whenever I arrive at a destination, particularly one that is short on amenities or creature comforts, (in this case, contact to the outside world) I am overcome with the urge to bolt.  Whether it be a beach hut in Bali or a shipboard cabin in Seward, I spend the entire first day figuring out an escape route, and the last day crying because I have to leave.  It took me some time to recognize this pattern and learn to just settle down and give it a day or two before I blow up my original plan.  In keeping with my usual M.O., such was the case with Capitol Reef.

When I first arrived in the Fruita Campground on Day One, I wasn’t sure I could do the time to detox from my internet addiction.  I stopped by the campground check-in kiosk to read terms and conditions for refunds to see if I could terminate my reservation early, and what kind of penalty I would incur if I couldn’t stay in my confirmed site all nine days.  By the ninth day, I was checking availability to extend my stay.  Typical… 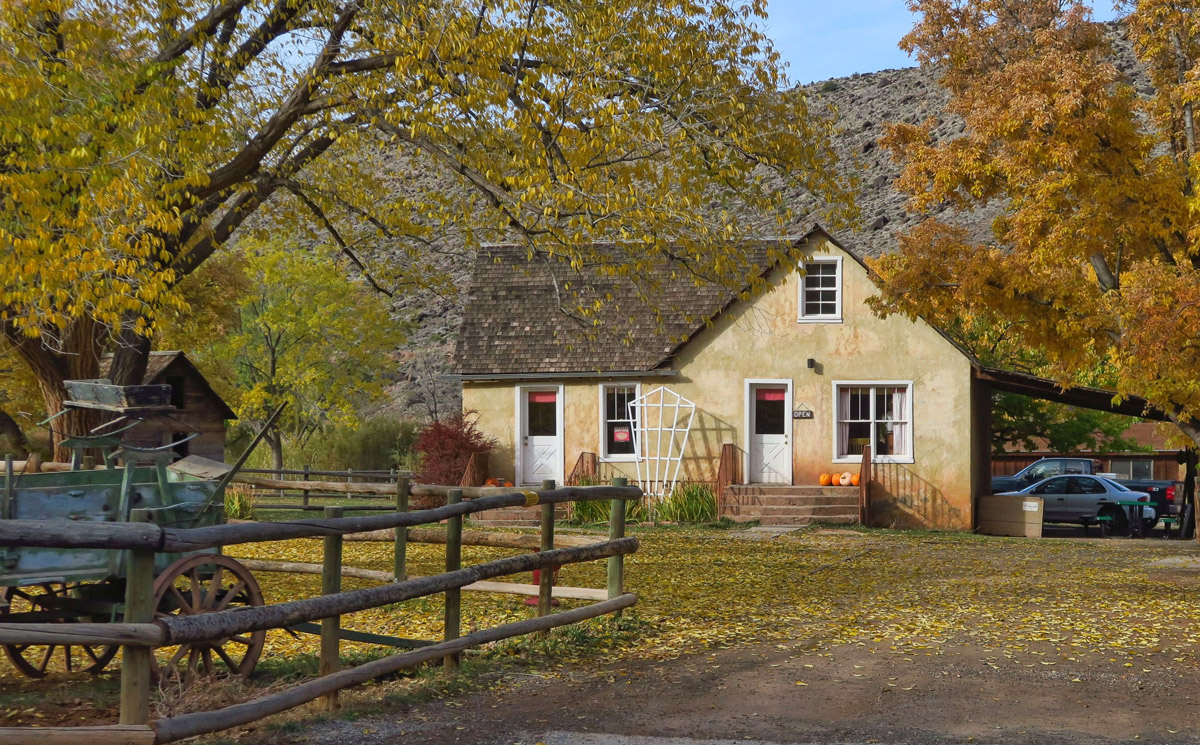 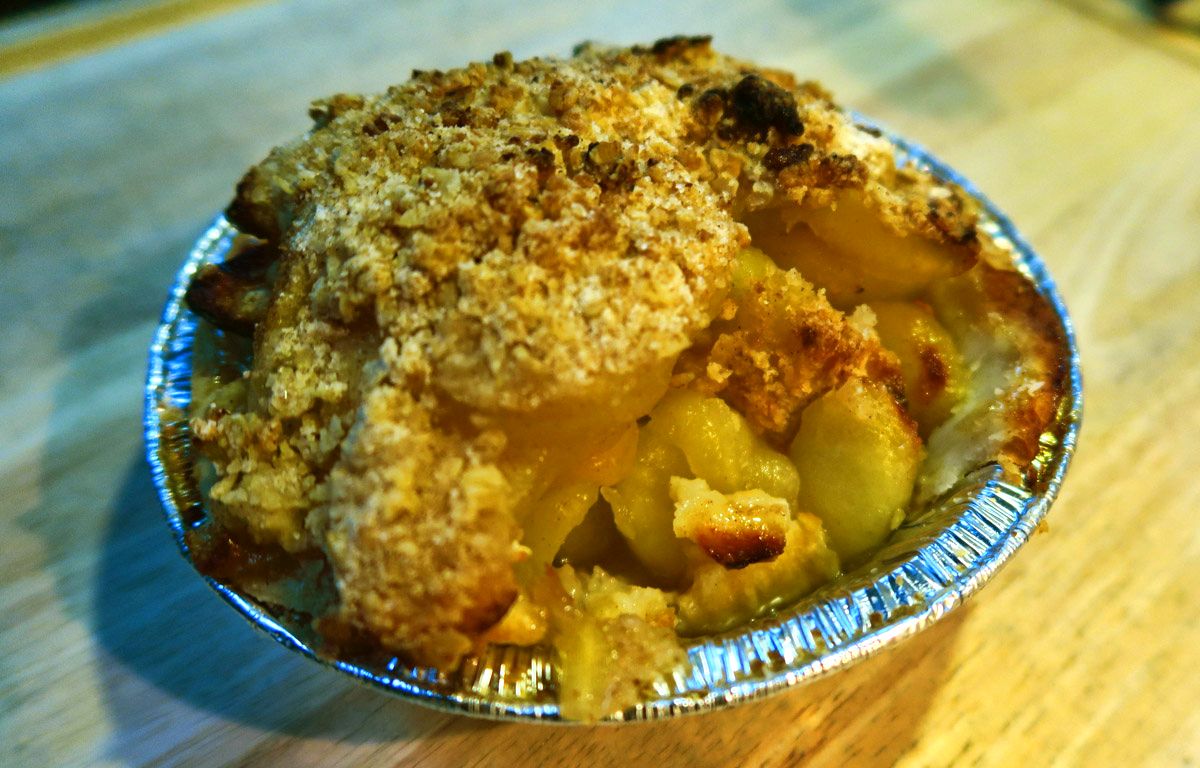 It would be tough to say which one was best, but the Fresh Apple is certainly a contender… 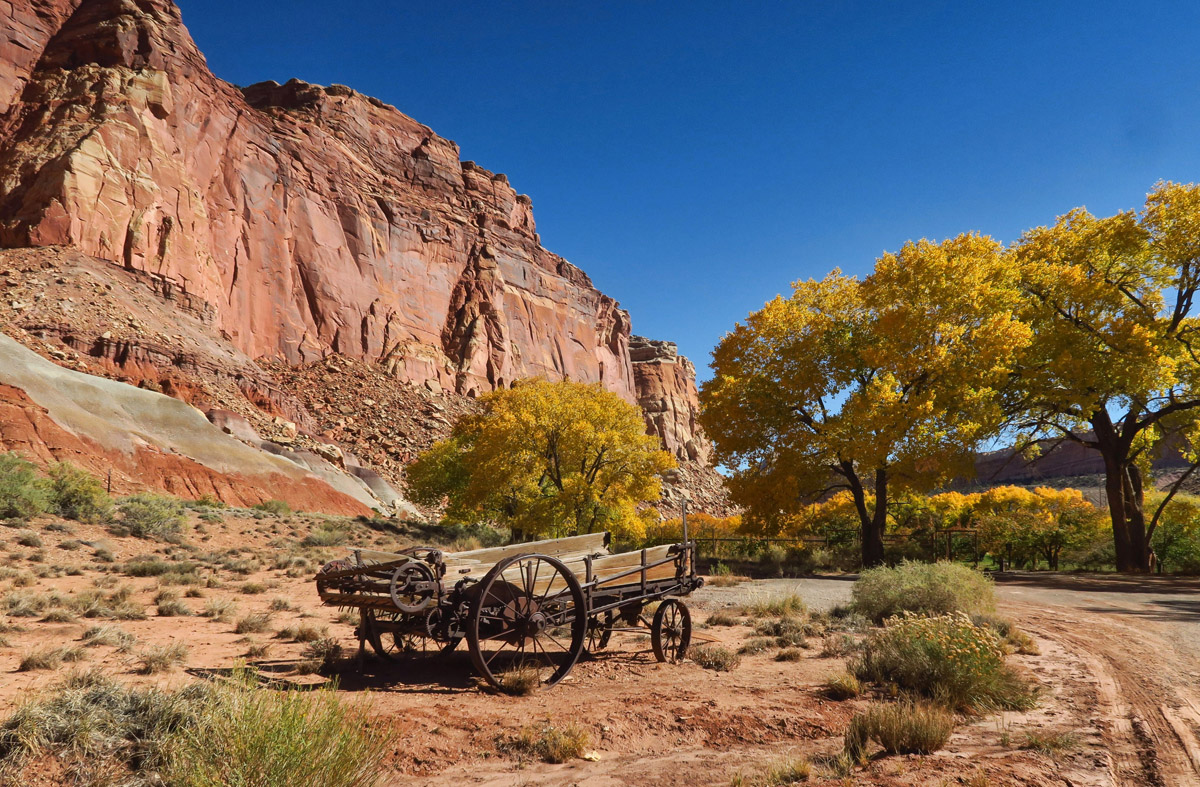 I think the ambiance of the orchards adds to the pie intrigue. 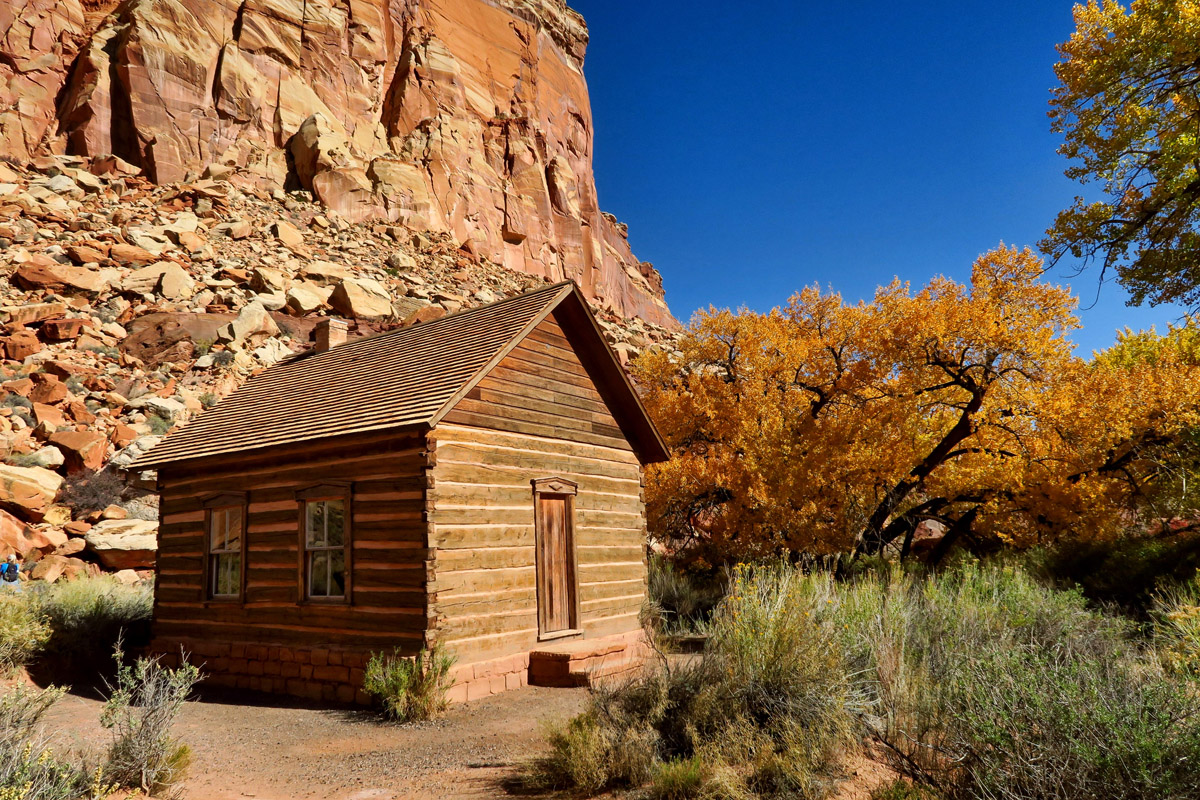 This one room schoolhouse, built in 1896, was Fruita’s only public building for many years. 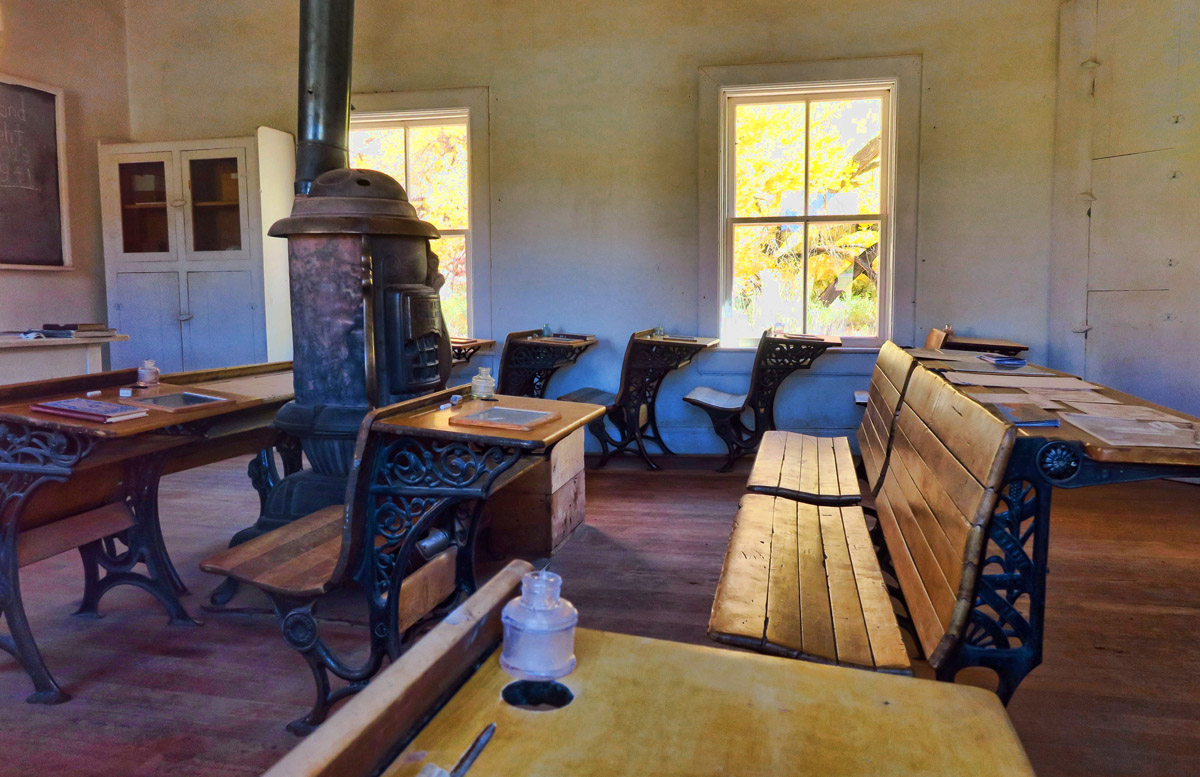 The schoolhouse was not open while I was there, so photo was shot through the window. 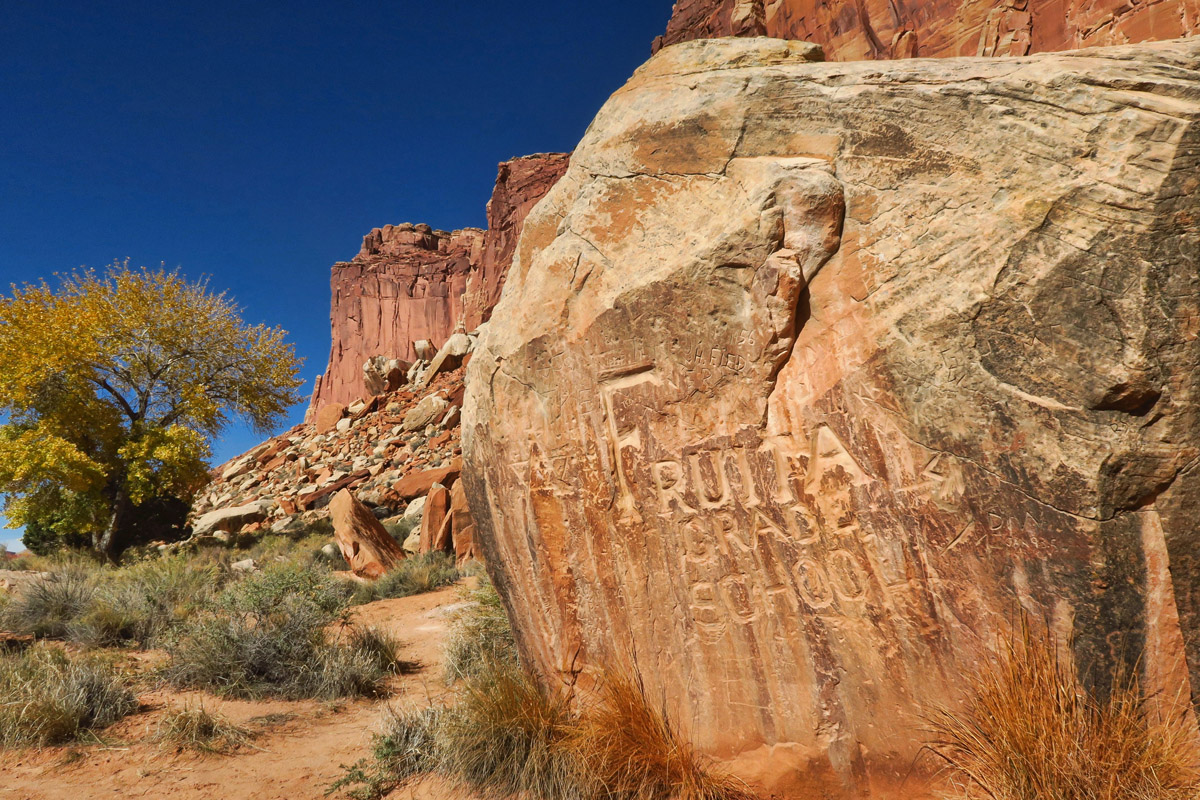 The last class in the Fruita Schoolhouse was taught in 1941. After that, students were bused to the nearby community.

On my last morning in the Fruita Campground, I stop by the Gifford Homestead for a pie for the road…this time, Fresh Apple.  No canned fruit pie filling here.  Just crisp, cinnamon coated apples glistening beneath a toasted streusel topping.  It’s early, so the pie is still warm from the oven.

My new friend is working this morning, the woman who told me about the cottonwood trees behind the Nature Center.  I thank her for the tip, and tell her I am feeling a lump in my throat this morning over having to say goodbye to my beloved cottonwoods.  “I’m not ready to leave until the very last leaf leaves!”  I joke. She tells me, “I think it’s sometimes good to leave while you’re a little in love.  That way, you’re more likely to come back!” 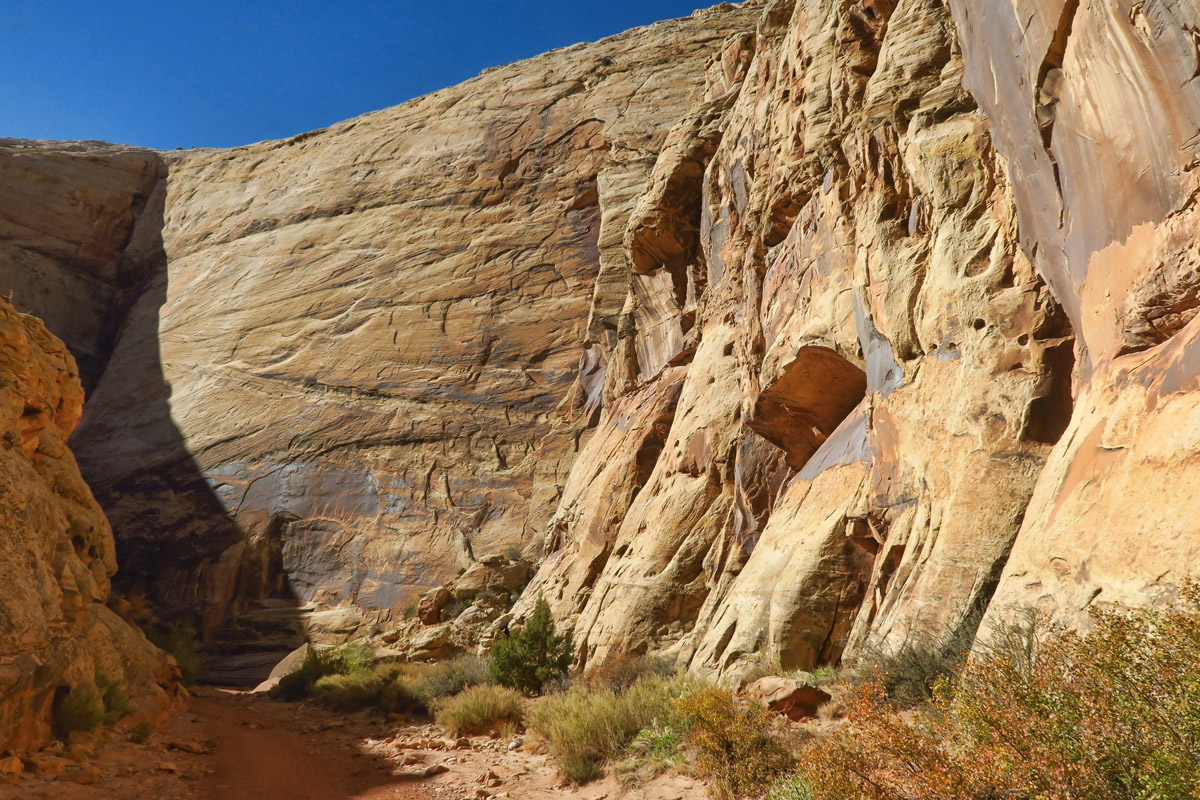 The Grand Wash, two miles in from Hwy 24 until you reach the trailhead coming from the opposite direction along the Scenic Rd. 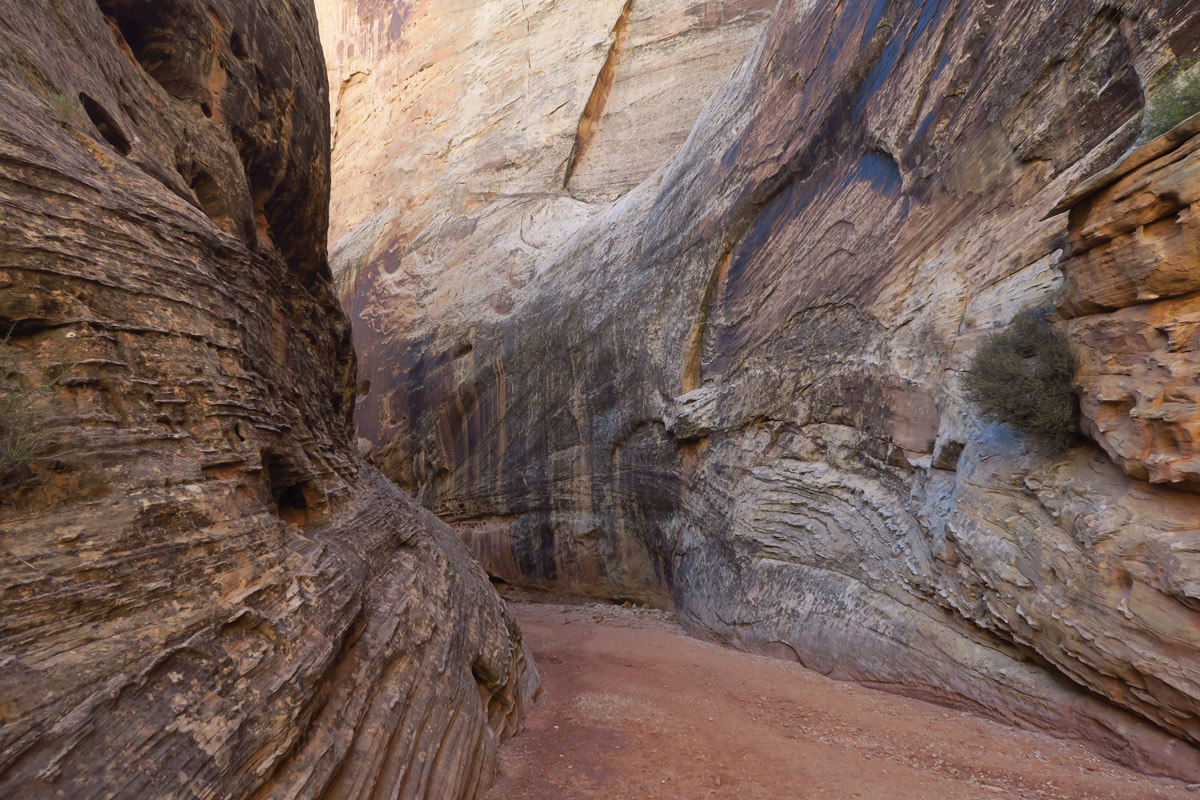 It’s crowded near both ends, but not in the middle. 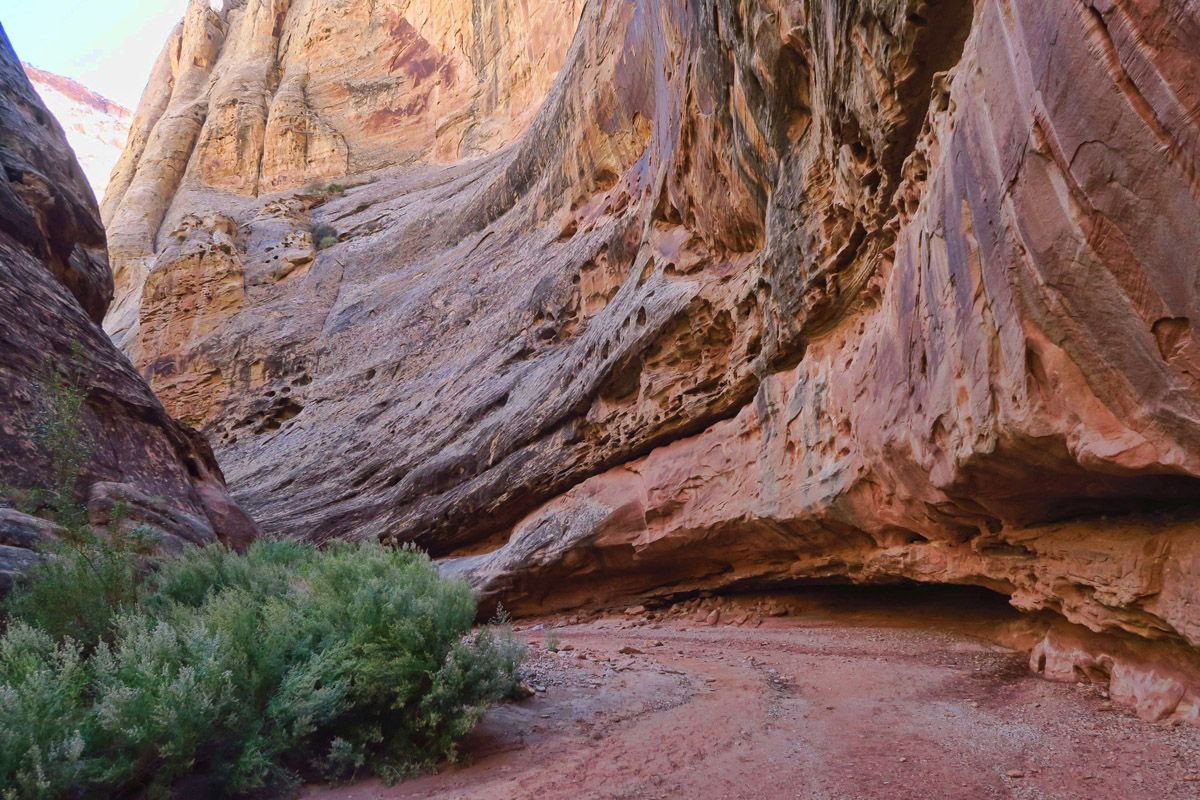 It’s a beautiful wash, with towering walls of 500 ft on both sides. 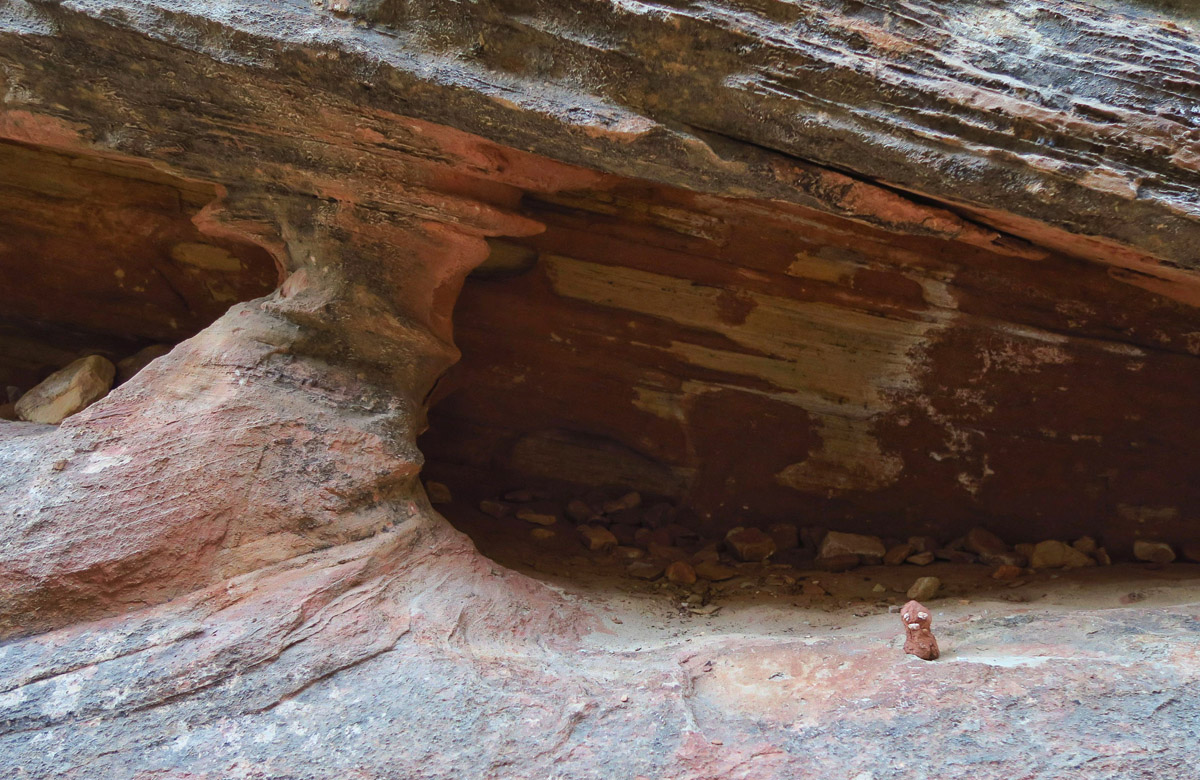 “Oh no! Mr. Bill!” (How is it someone can put three rock chips on a wad of clay, and I can feel compassion for a little man living in a cave??) 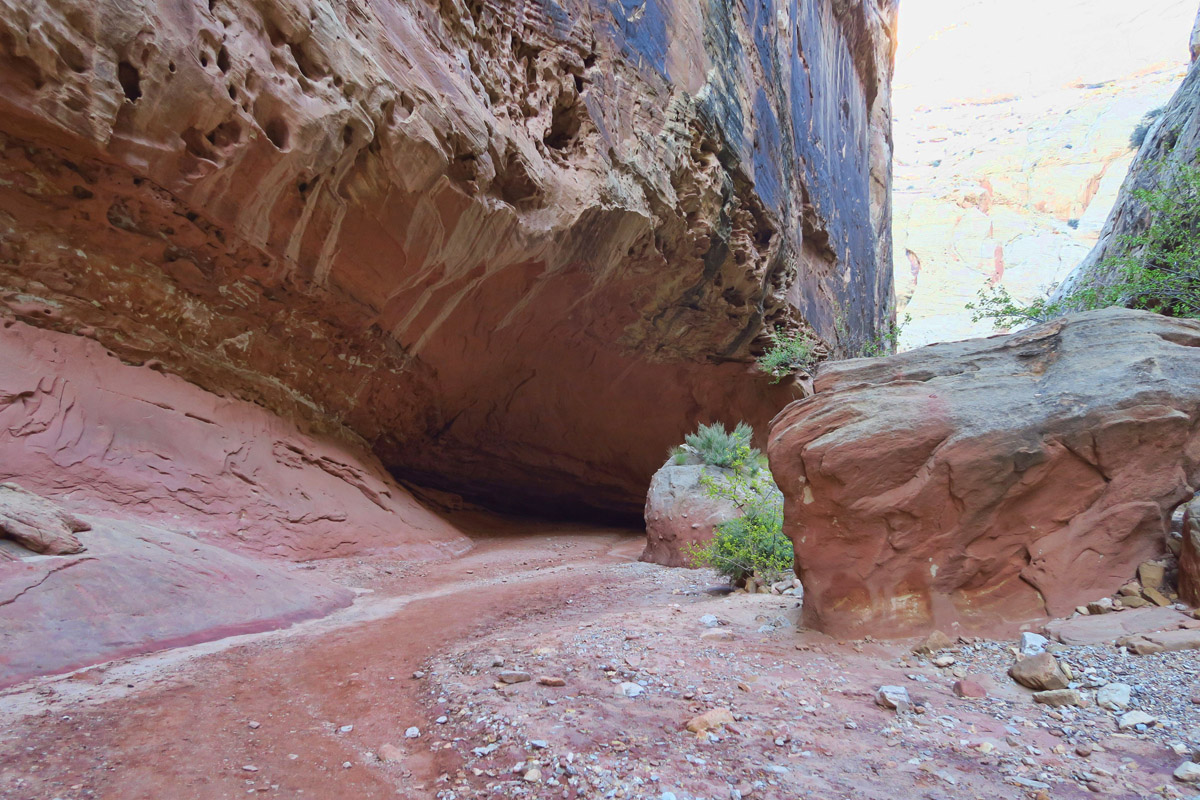 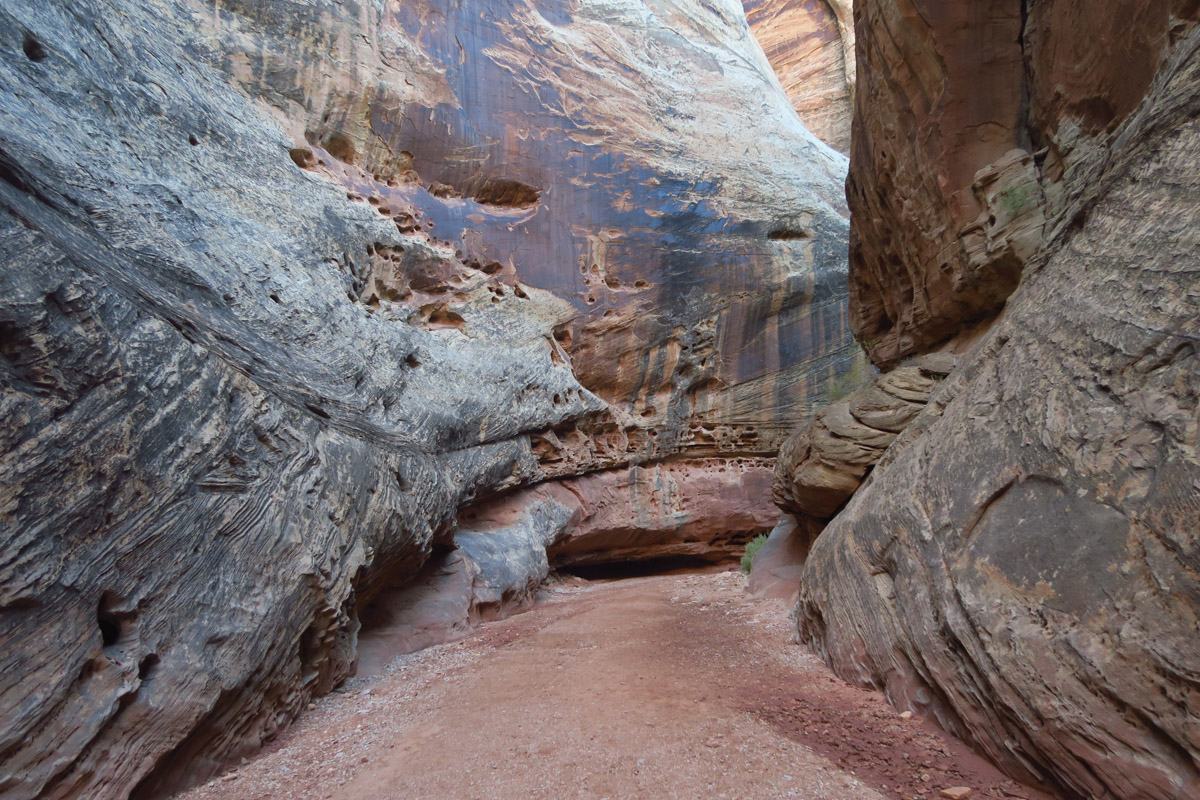 My last hike in Capitol Reef was up the Grand Wash for two miles, then up the Cassidy Arch trail for a total of seven miles round trip.  Although it was the most crowded of all trails I hiked during my stay, once I got away from the trail head, I still was able to find long quiet stretches of solitude.

As I hitched up to leave Capitol Reef, the dusty brown leaves were raining down to line the campground roads, furling up as the bicyclists raced by.  I pondered her words of leaving while just a little in love as I said goodbye to the trees, their glorious golden leaves now falling like a curtain on the final act at the Met.   Thinking about other parks like Zion and Arches and how rapidly they have changed over the last few years, I think she is right.  I am grateful to still be a little in love…. 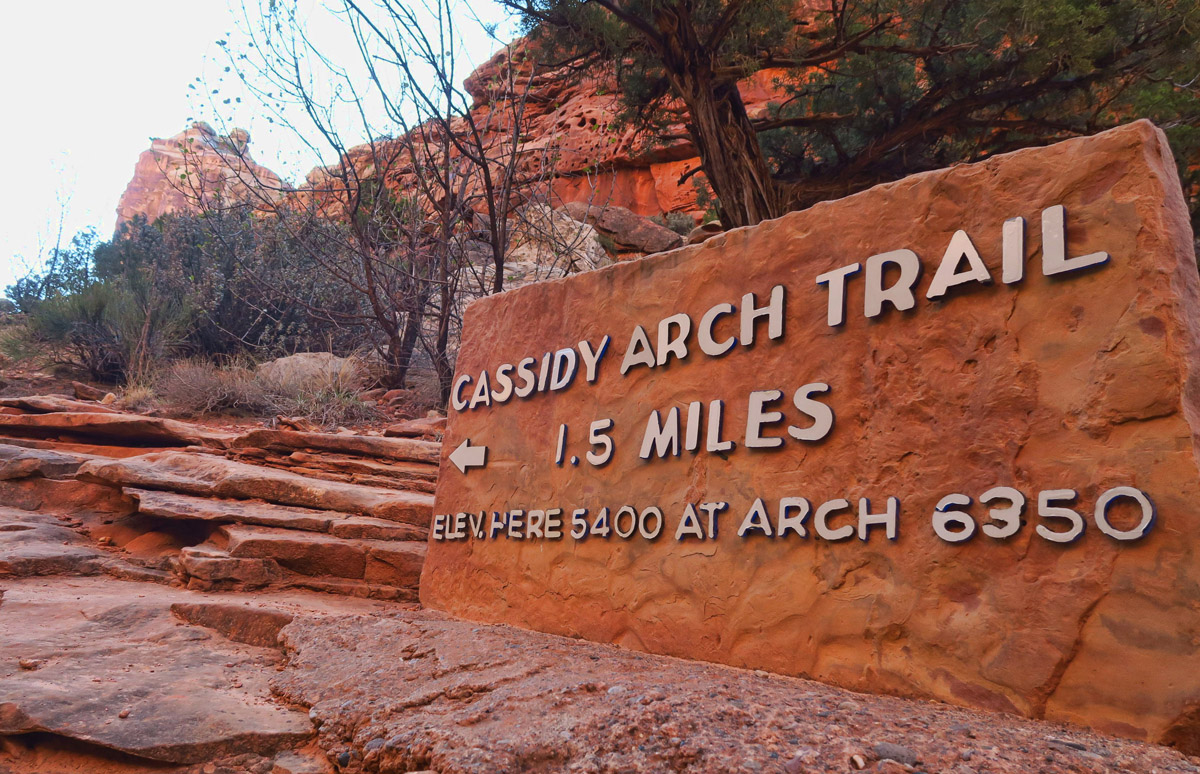 Extend the Grand Wash trail up Cassidy Arch for another great example of depth versus altitude. 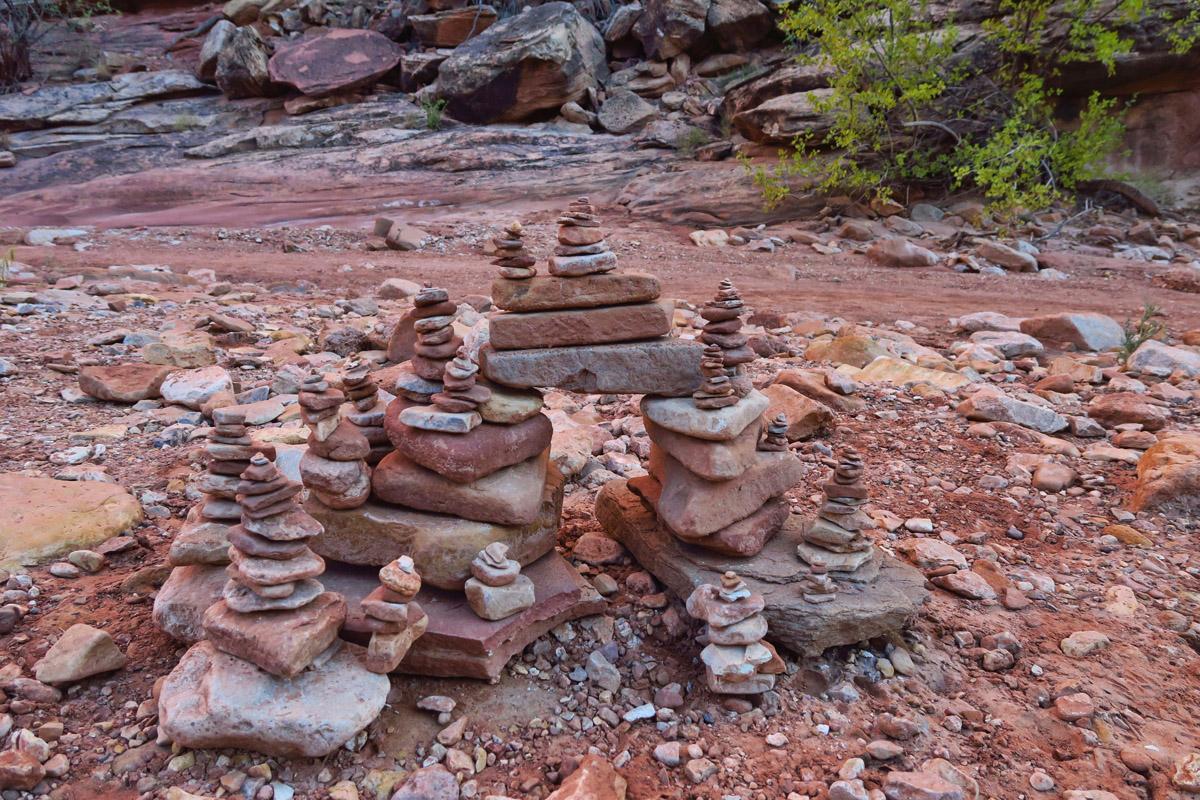 Just beware of “cairn-age” on the trail. 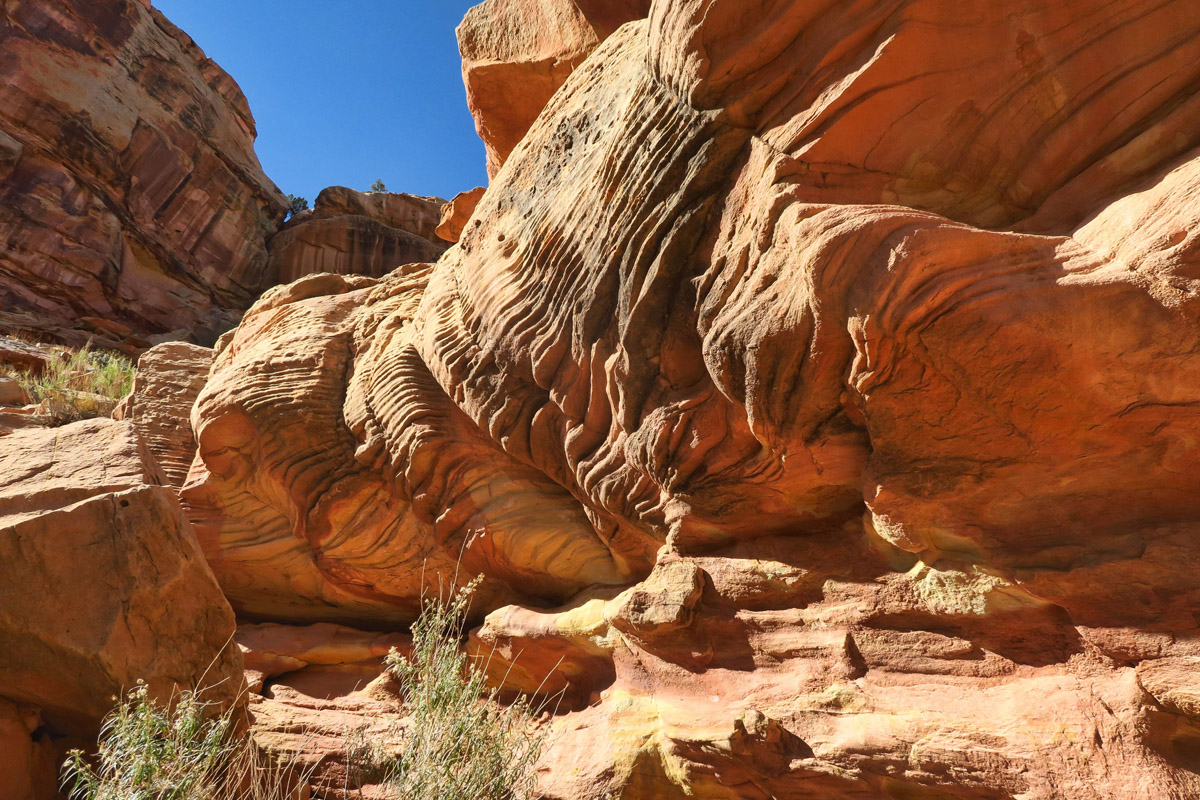 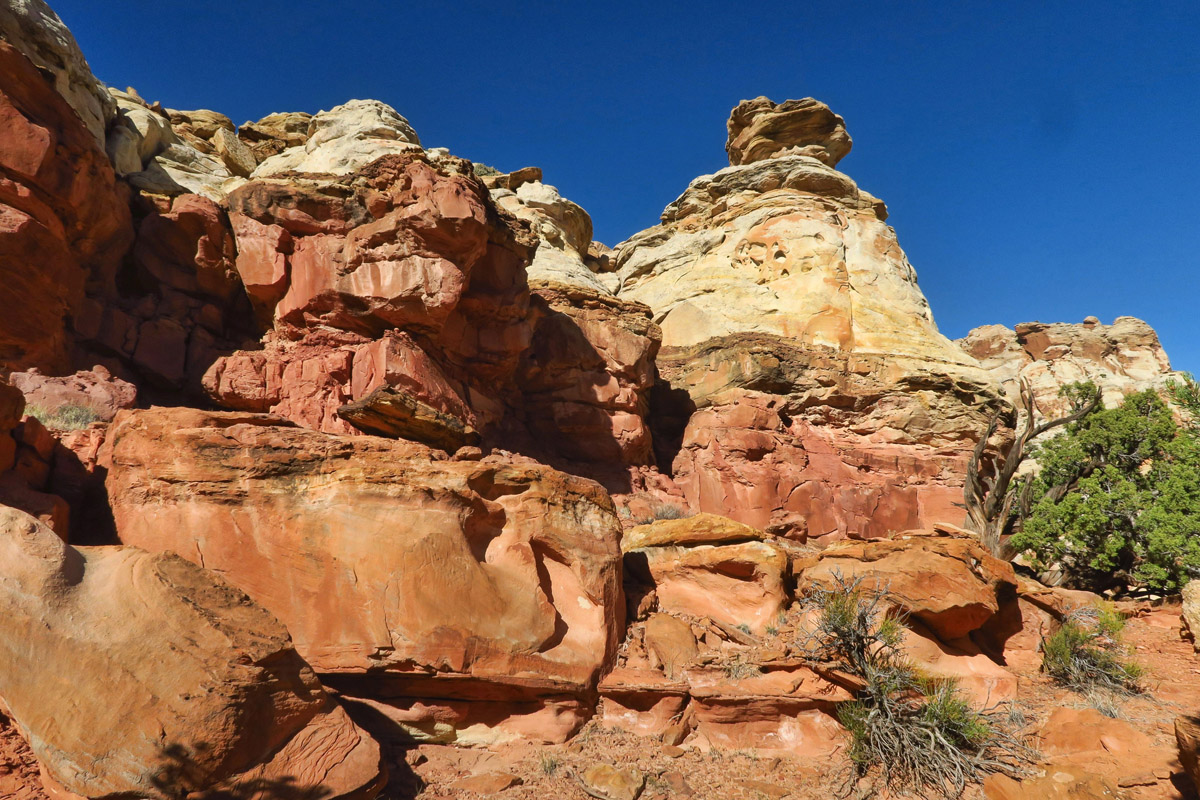 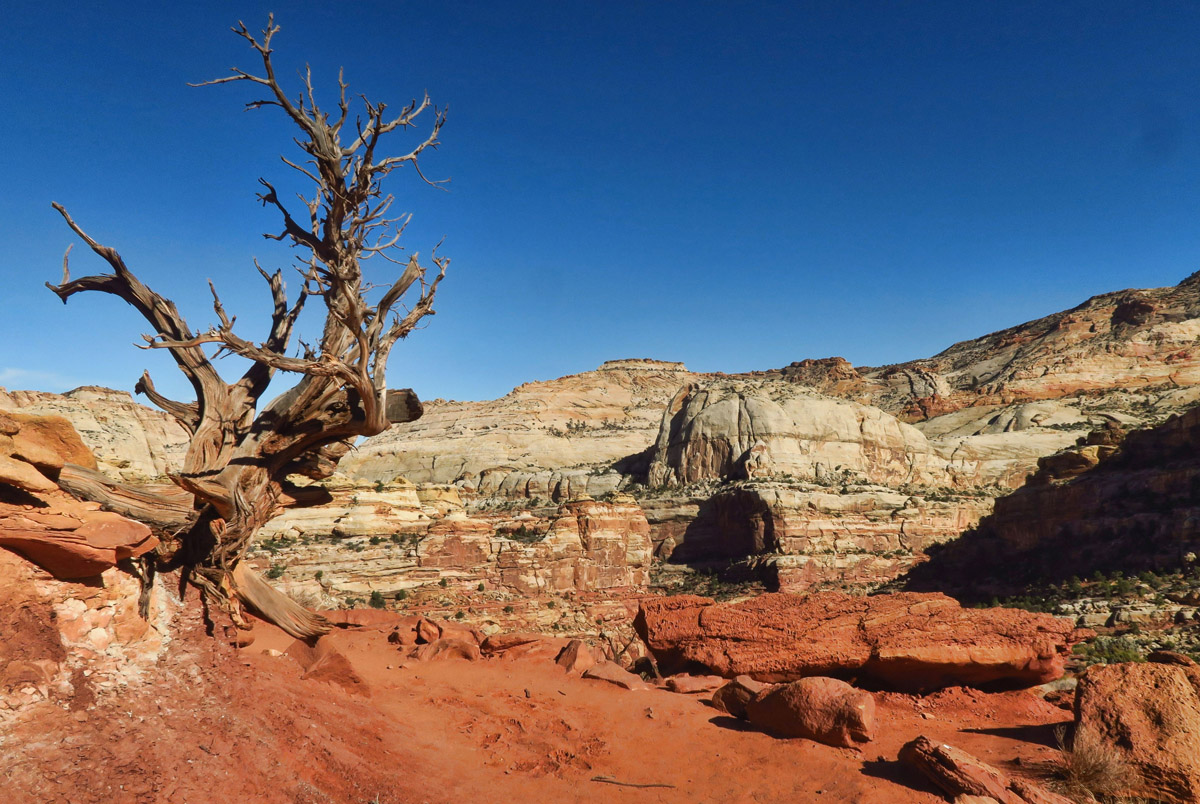 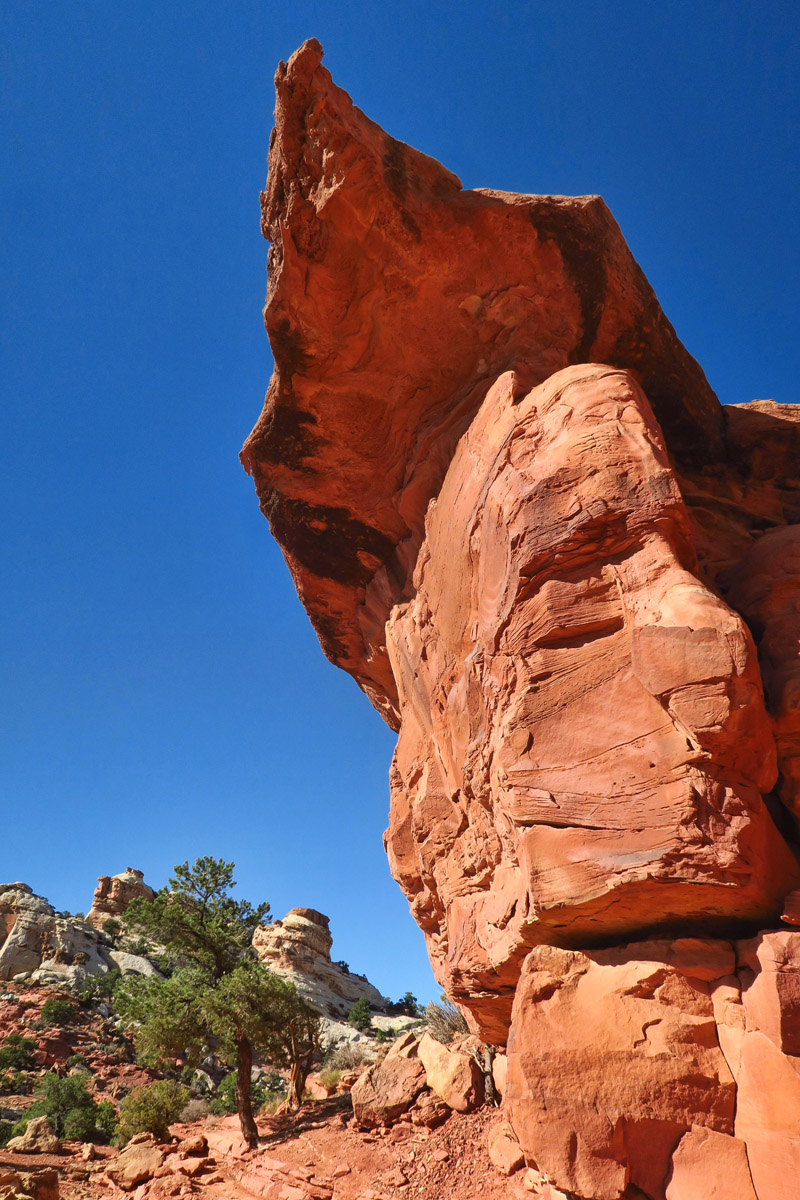 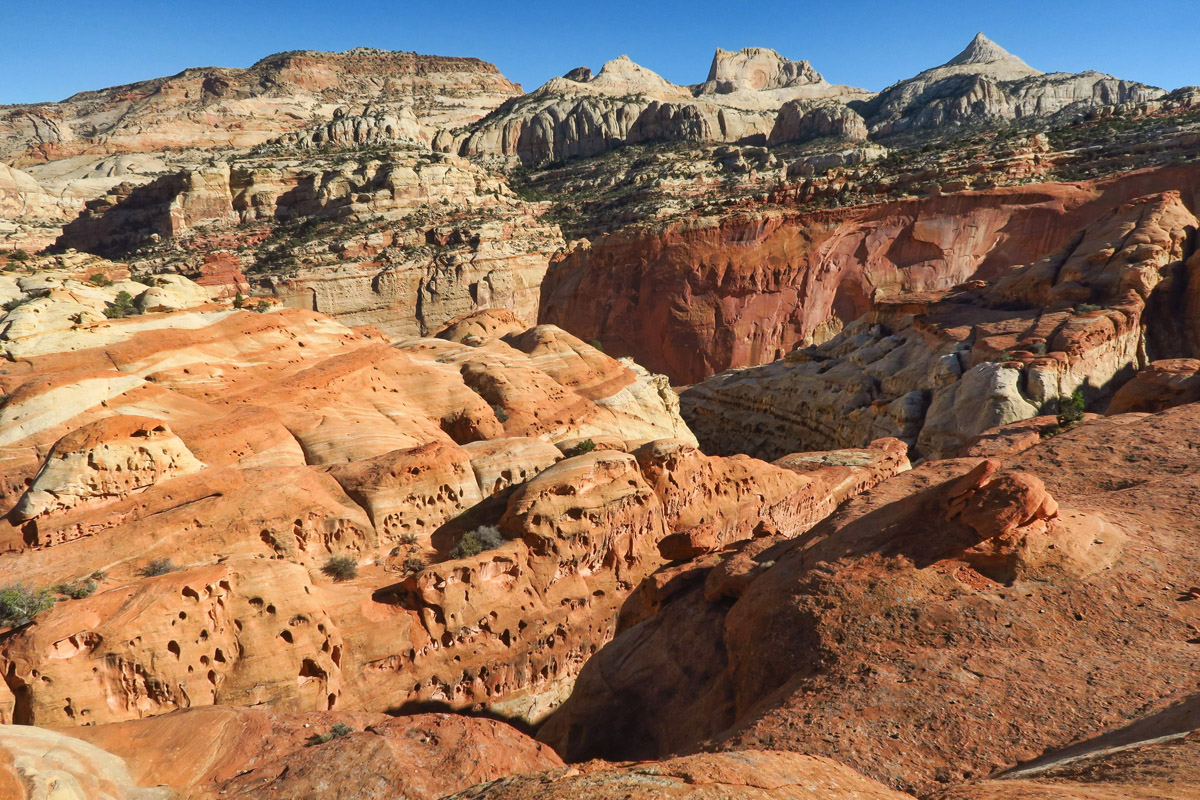 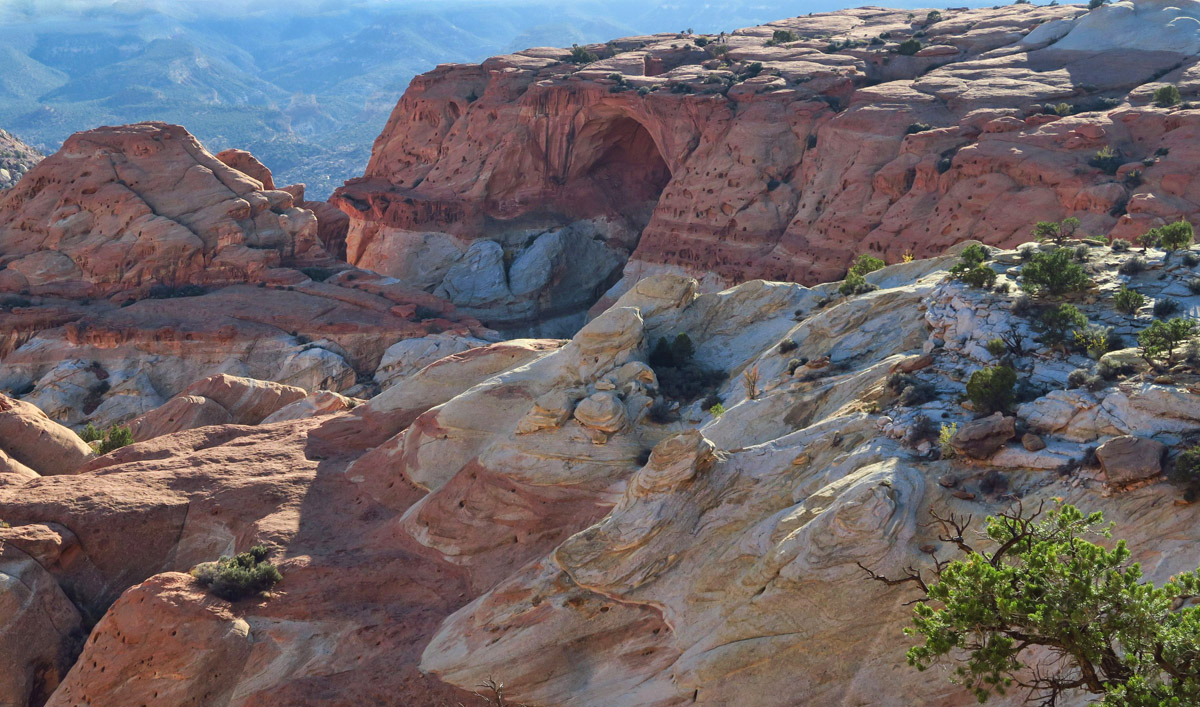 It’s the wrong time of day to try to photograph Cassidy Arch, but note its shadow in upper center of photo. 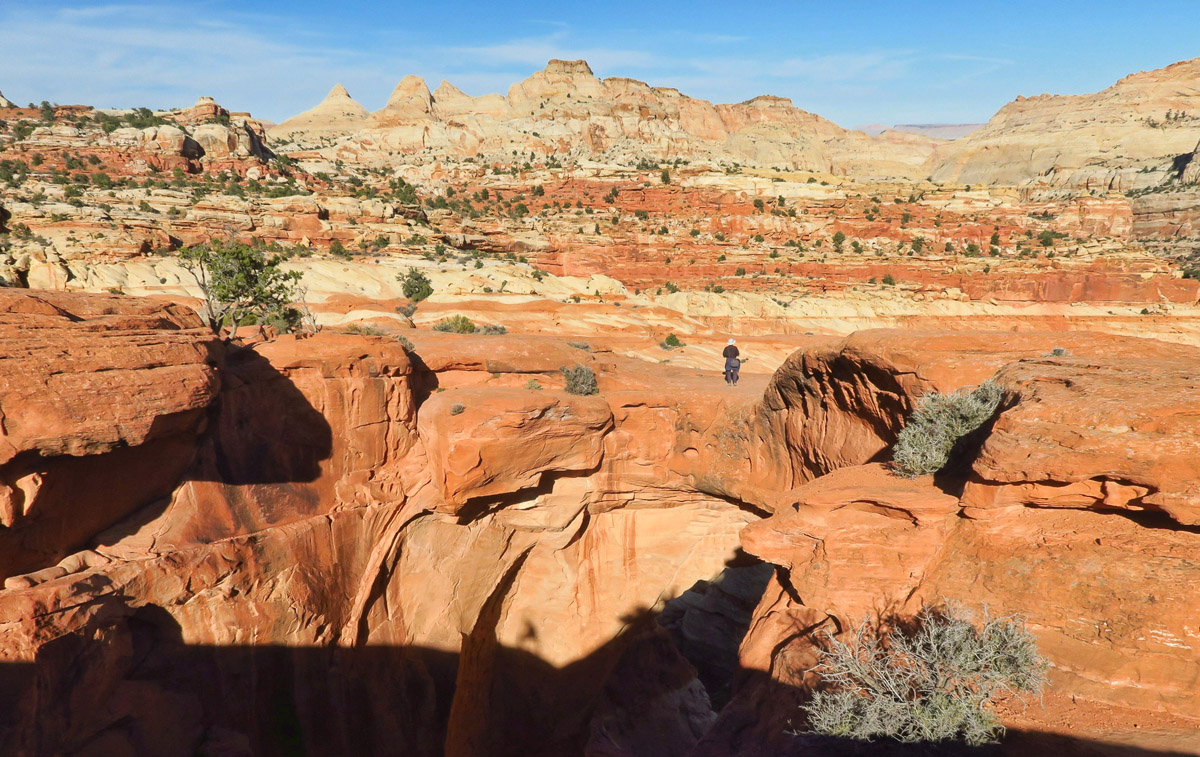 This man just to the right of center is giving perspective as he stands directly on top of Cassidy Arch. 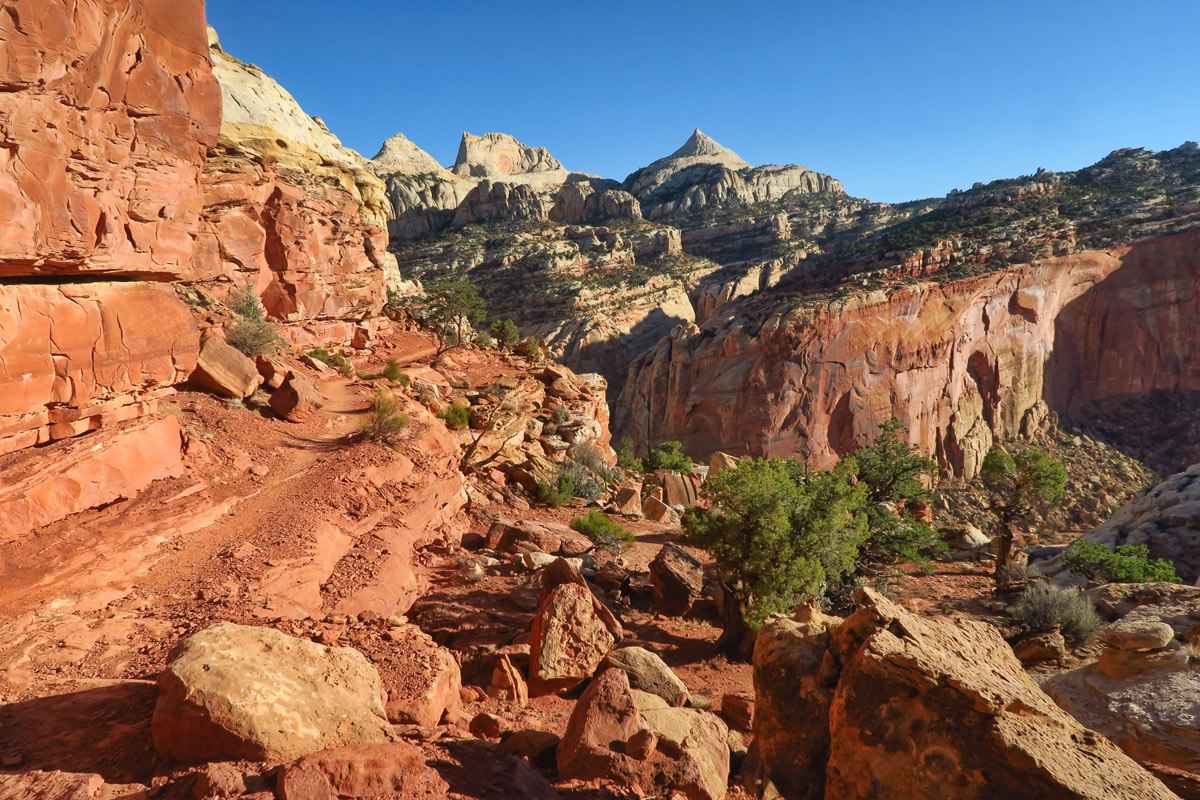 The arch was named for Butch Cassidy. Although there is no proof, he was thought to have used this area as one of his hide-outs. 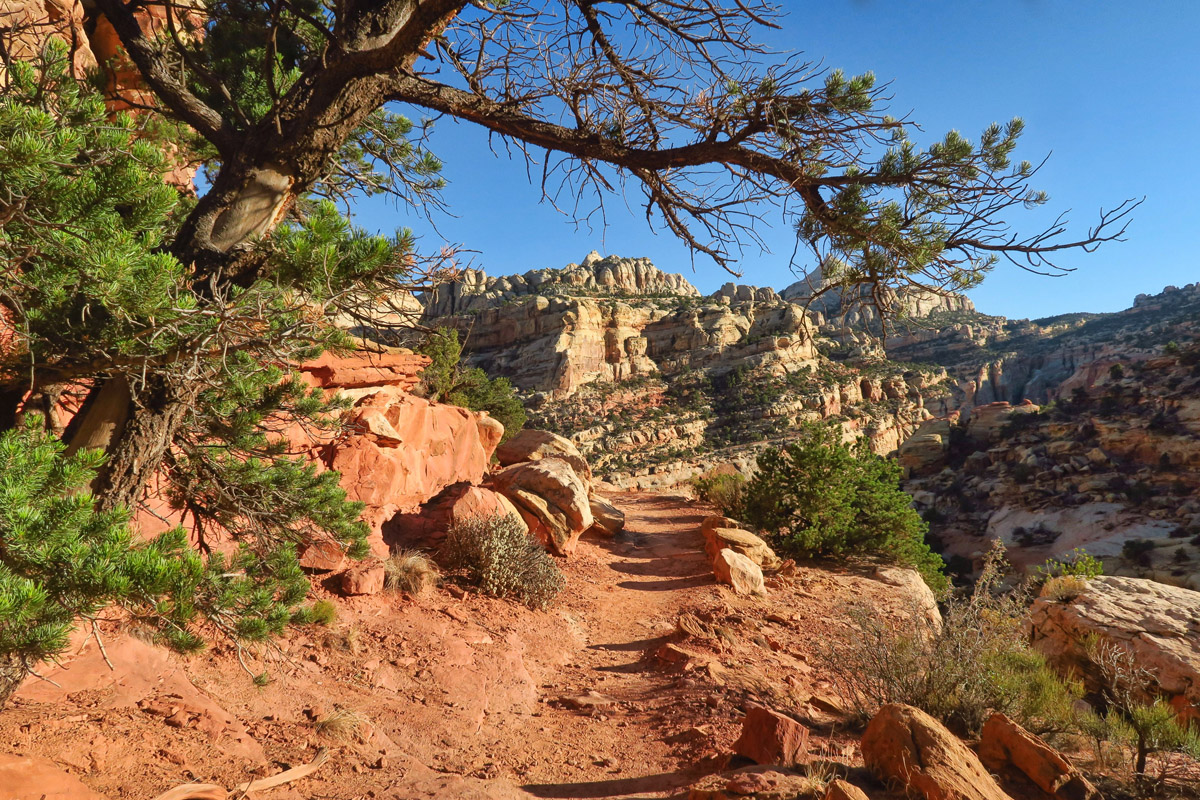 I don’t think I would have enjoyed my time here near as much were it not for the warm autumn light on the glowing red rocks. 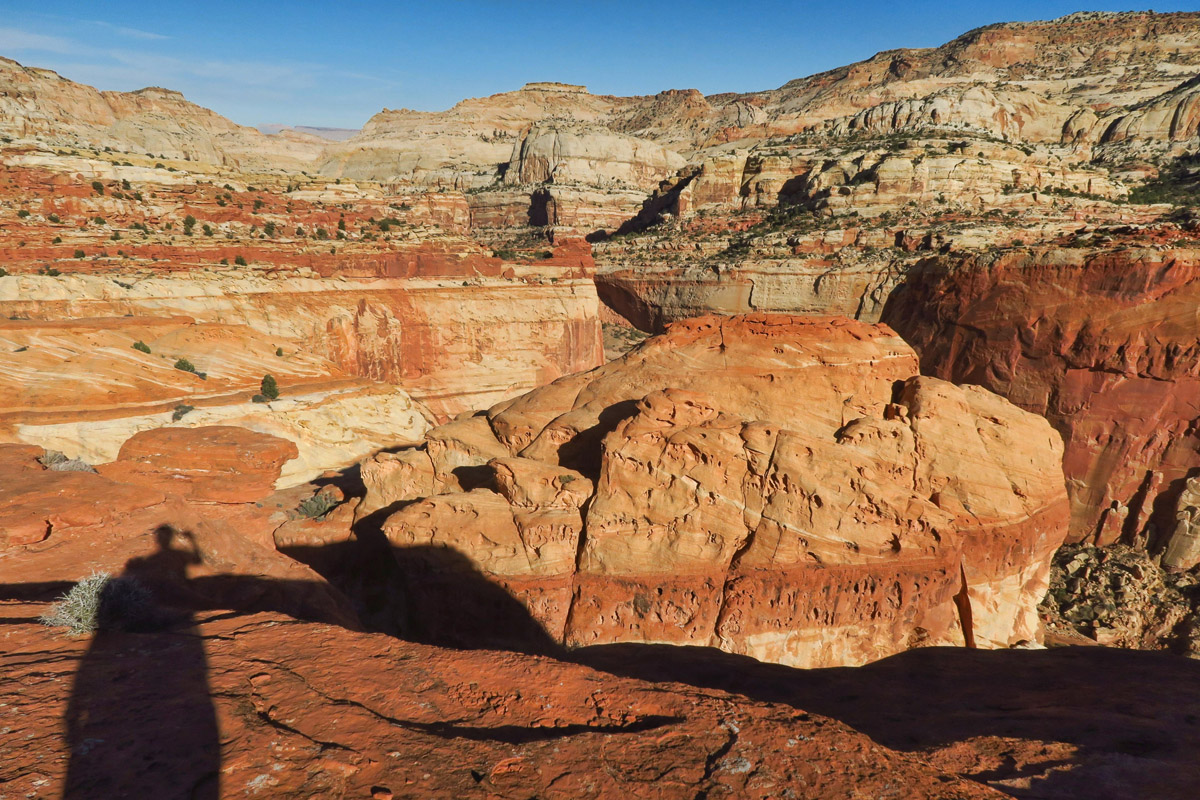 The low-lying sun casts long shadows as it gives off a radiant glow. 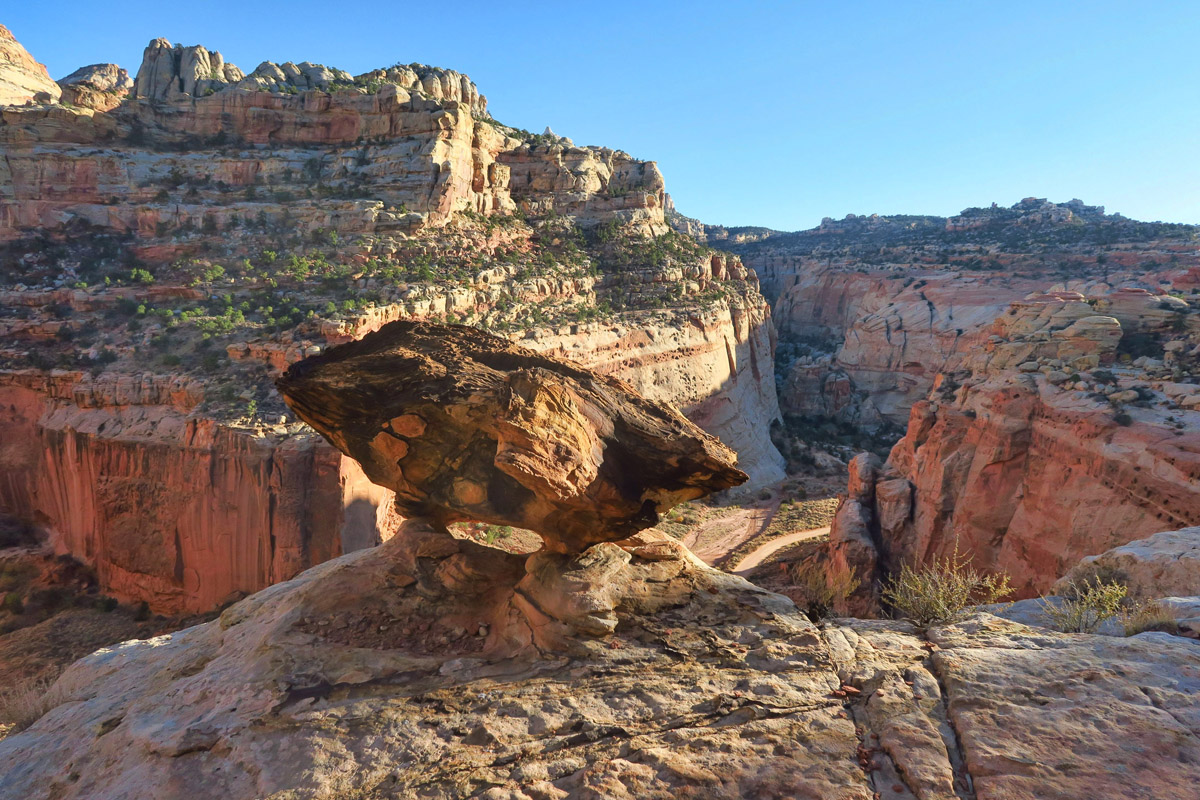 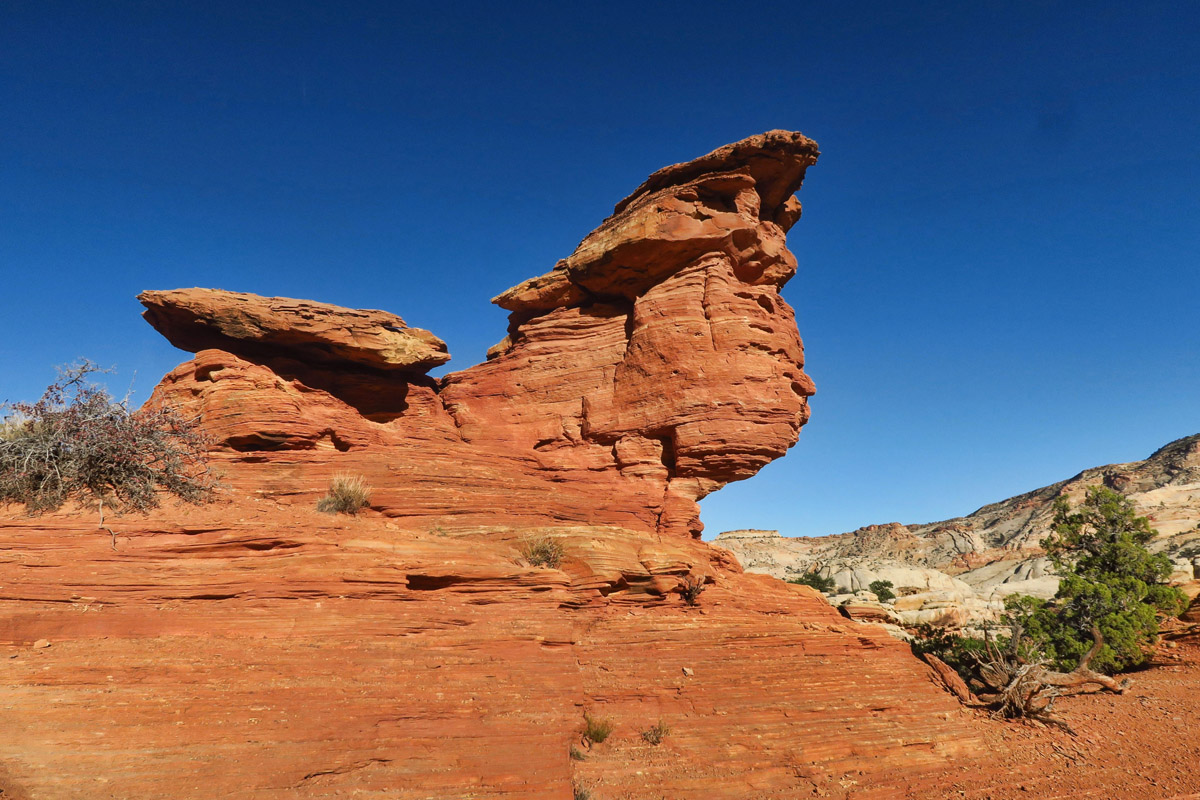 9 thoughts on “Leave While You’re a Little in Love…”