The Beagle has two zodiacs, or rubber dinghies used for ferrying passengers back and forth to land; one smaller and one larger. There are times when we all crowd into the larger of the two, but other times both boats are used. On this day, I learn a valuable technique…always try to get in the smaller boat, as it will only have one crew member, the helmsman. The larger of the two boats will always have two crew, the driver, and Fabian. With only one crewman, the smaller boat must wait for the larger boat to land first, so there is adequate crew to secure the boat and assist the passengers upon exiting. This is a long way to say “the smaller boat gets a longer boat ride.” On the landing in Española, this pays off in spades. The area where we would be making our dry landing is a “sea lion nursery,” and this morning, it’s teeming with baby sea lions. We circle around watching them frolic, dip and dive while waiting for the larger zodiac to arrive. They are as adorable as playful puppies!

I learned a second valuable technique this morning also. Always take your camera out of your air conditioned room to allow ample time for the camera to warm up prior to going ashore. My lens fogged over, causing half my “puppy” photos to be blurred. 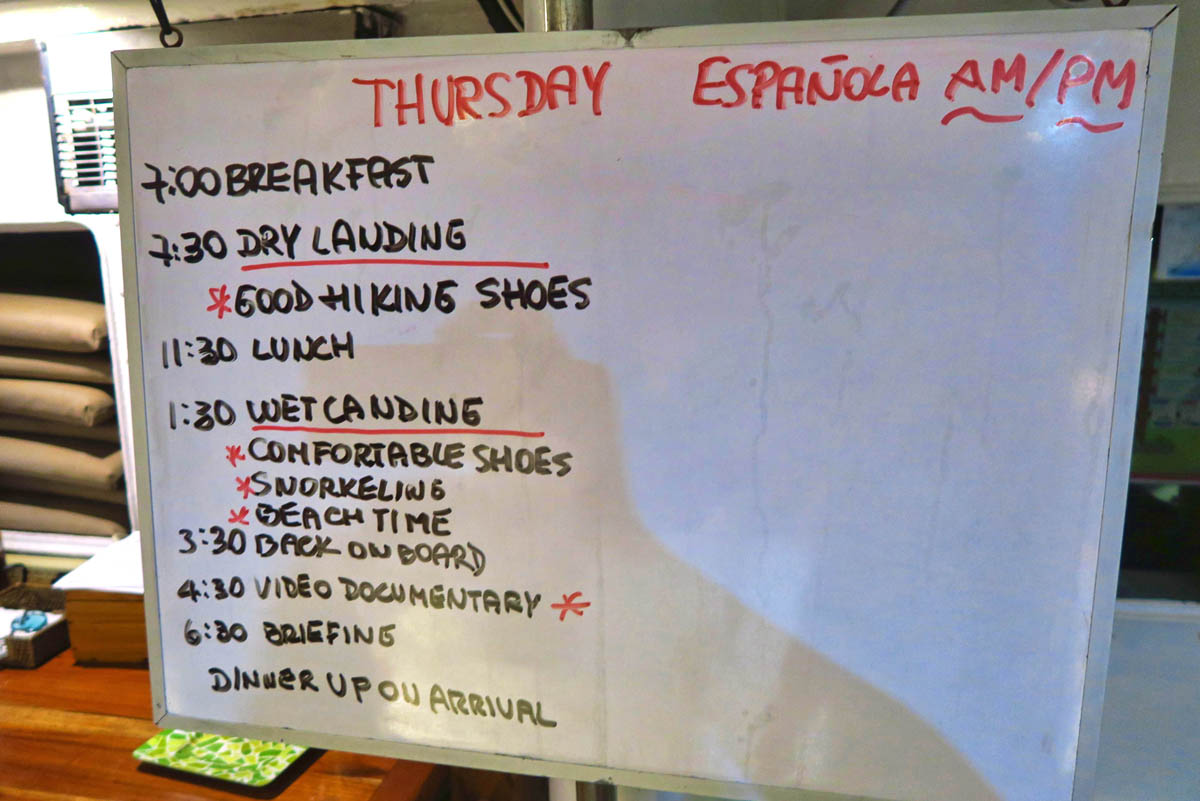 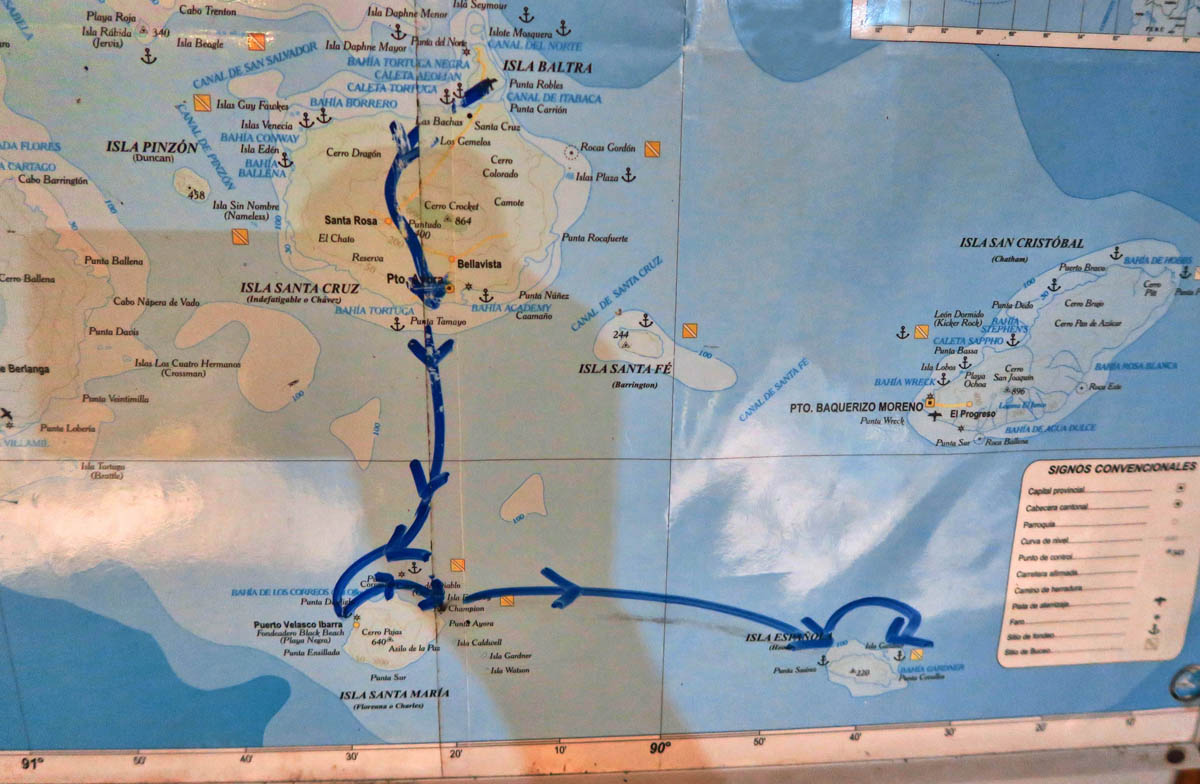 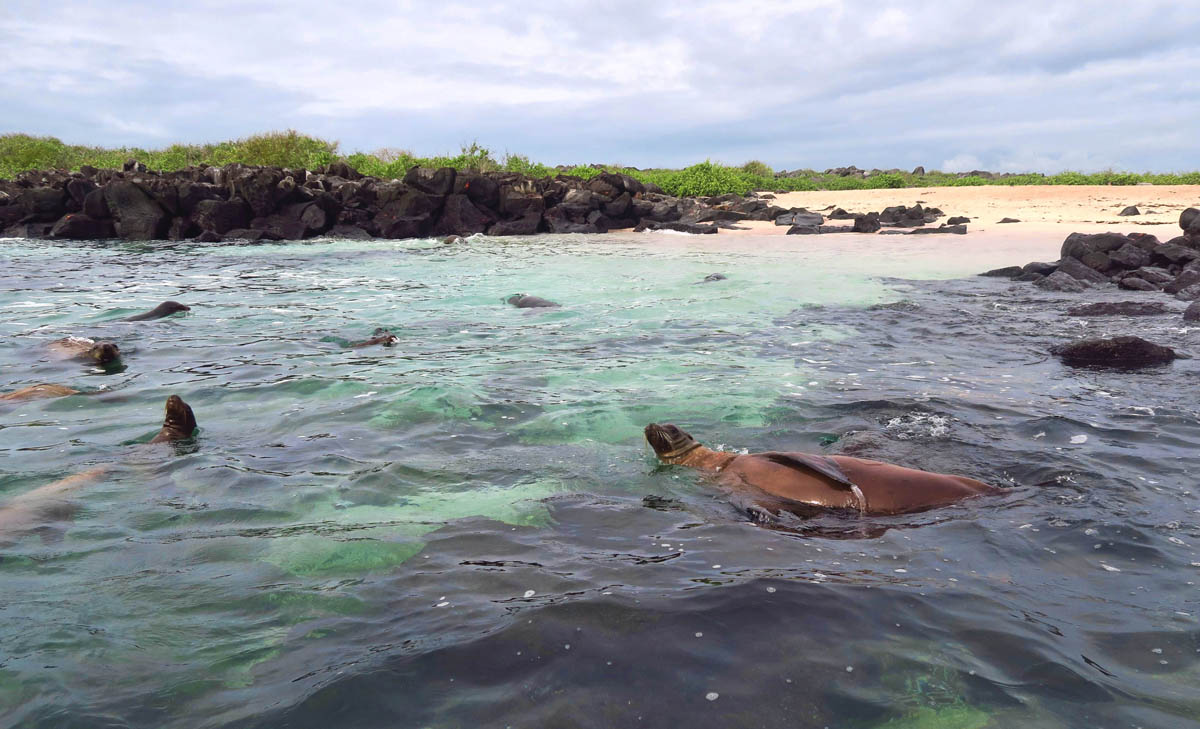 This little cove is full of frolicking sea lion pups. 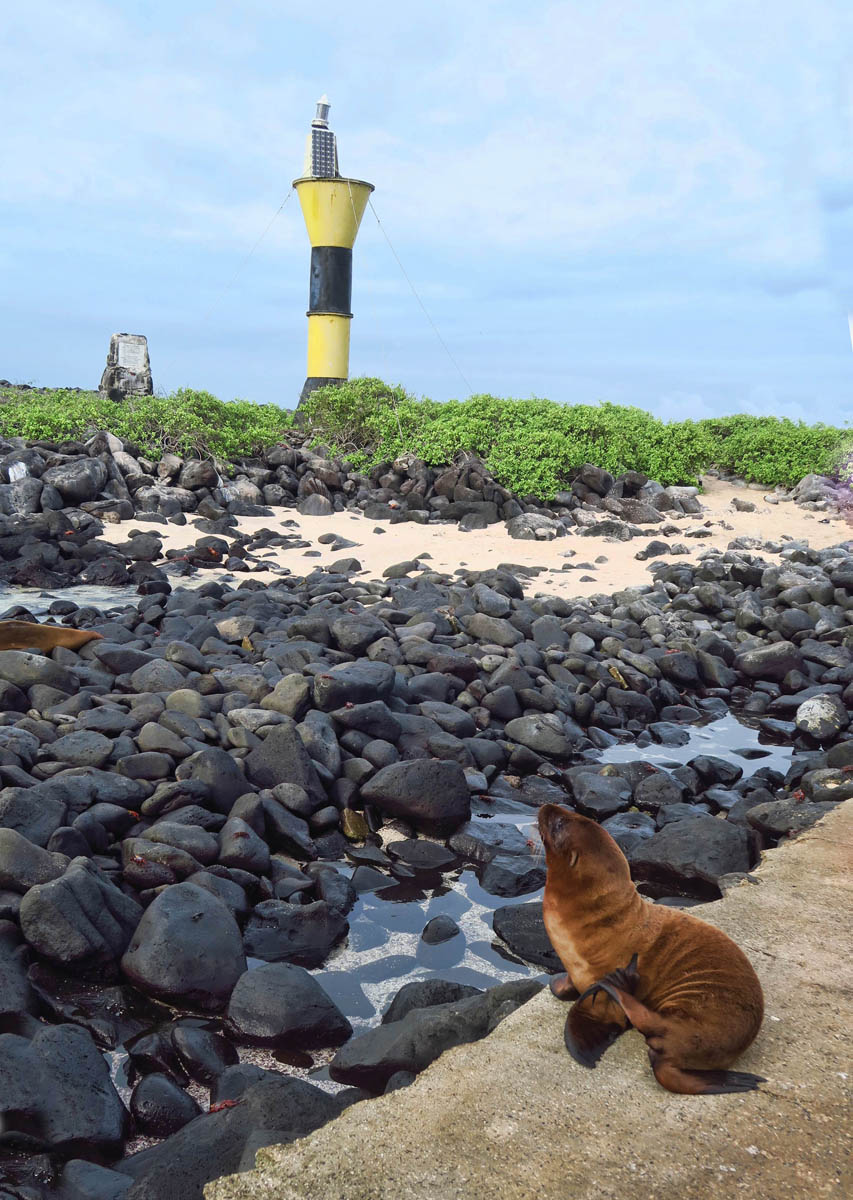 Another greeter on the path of our dry landing. 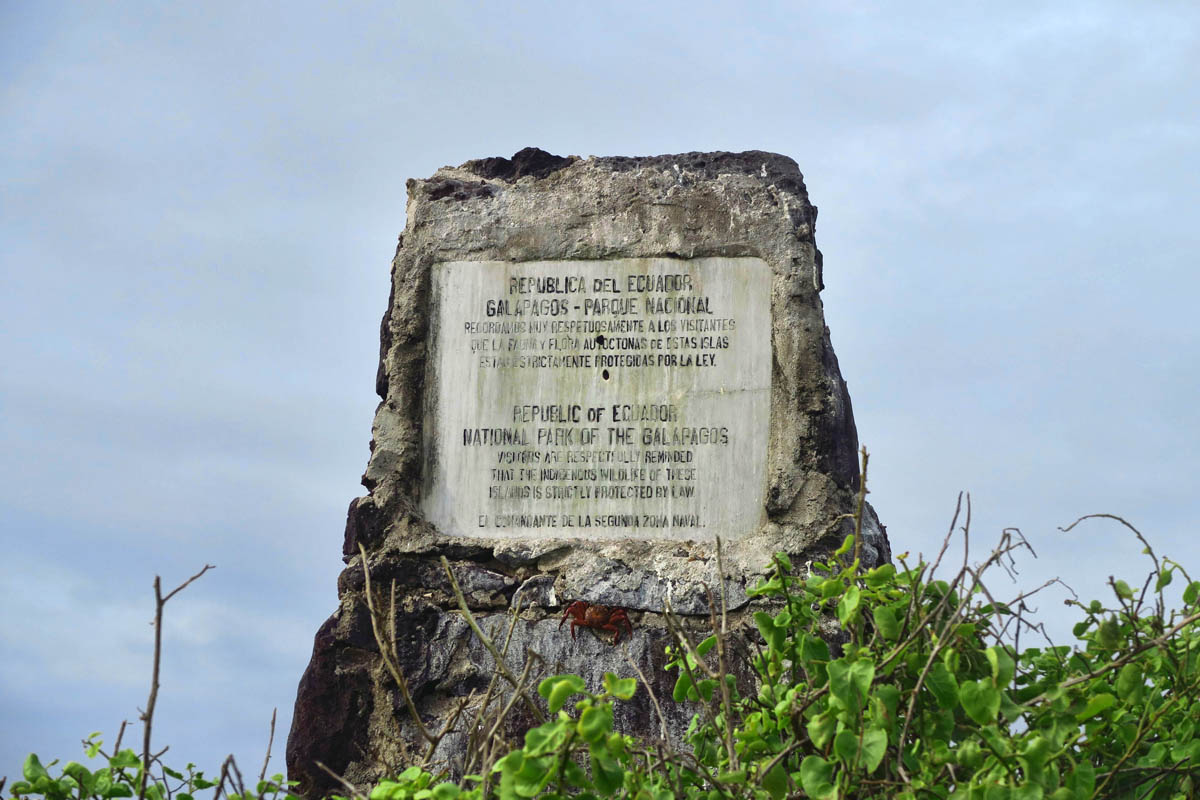 A time tested reminder that wildlife is protected by law.

Española Island is believed to be the oldest of the islands, having formed from volcanic eruption some four million years ago. It is also the southernmost island in the Galapagos archipelago.

Each island in the Galapagos has at least one “feature,” or claim to fame, making the case for visiting via cruise ship even greater, so one can visit the most islands possible. For Española, its greatest known feature is likely it’s colony of Waved Albatross. The largest of all Galapagos birds, it has a wingspan of seven to eight feet. Sadly for us, we are here at the wrong time of year to see these majestic seabirds. The entire colony left in January to fish for three months before returning to breed.

The Waved Albatross mates for life, so the male returns to the breeding territory to wait for his mate, while the young albatrosses will remain at sea for about five years before returning to seek out a mate. Española Island is the only place to see the Waved Albatross, so if that is on your “must see” list, don’t come January through March. 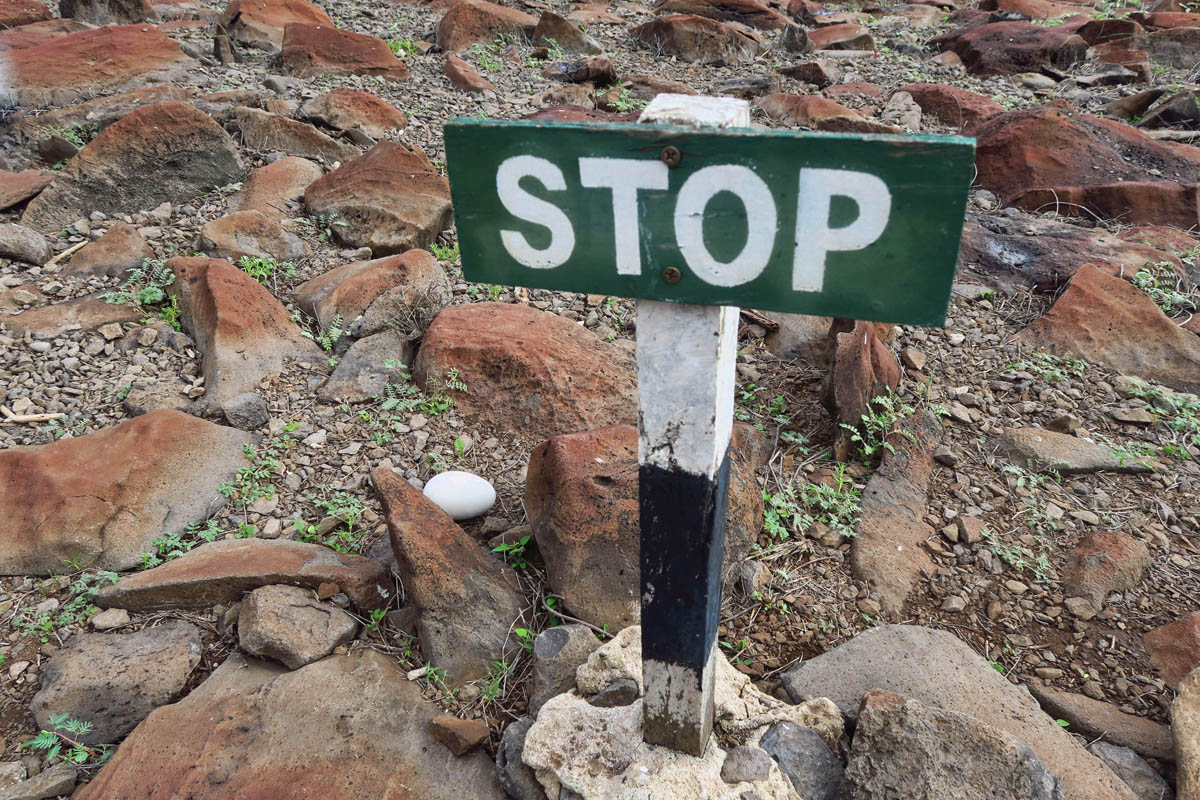 This one lone egg is the only thing remaining in the Waved Albatross territory.

But never fear, there is plenty to see on Española besides the albatross! Our dry landing at Punta Suarez leads us along a rocky path heavily populated with multicolored marine iguanas. Not only is this prehistoric-looking lizard endemic to the Galapagos, it’s the only sea-going lizard in the world. While their color is black most of the year, the males turn a brilliant red and green during mating season. Those on Española and Floreana Island are known to have the most brilliant colors. Fabian tells us fights break out often during mating season, even drawing blood. 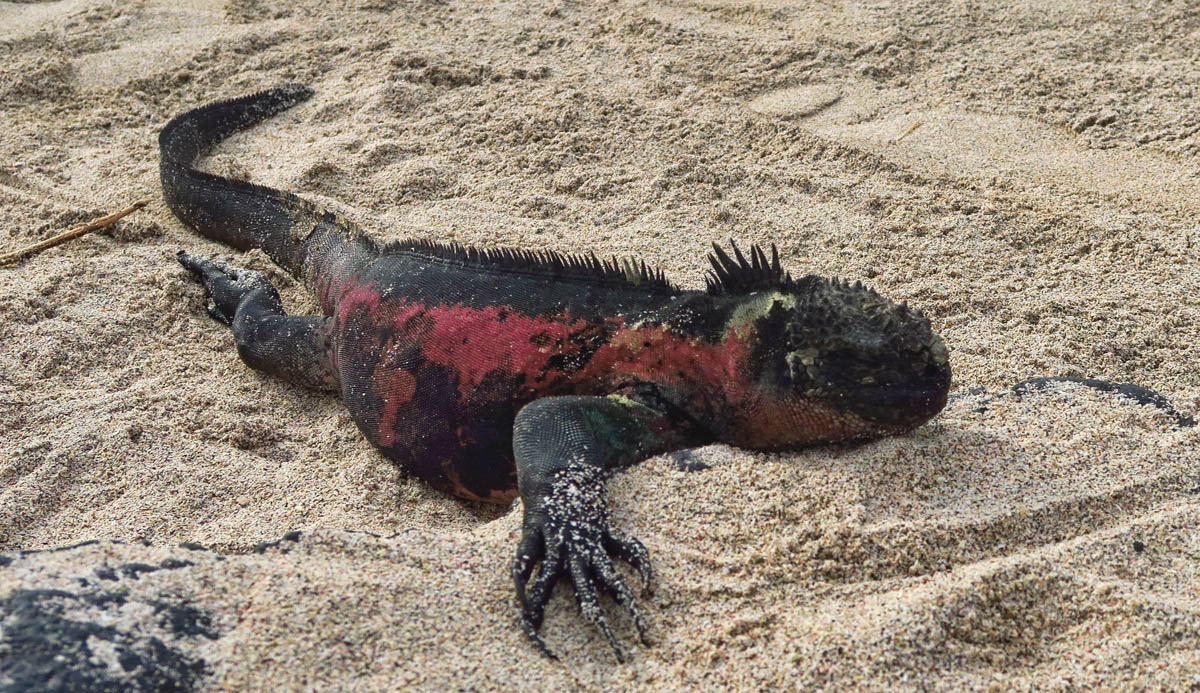 Coming ashore at Punta Suarez, there are marine iguanas and sea lions in every direction. 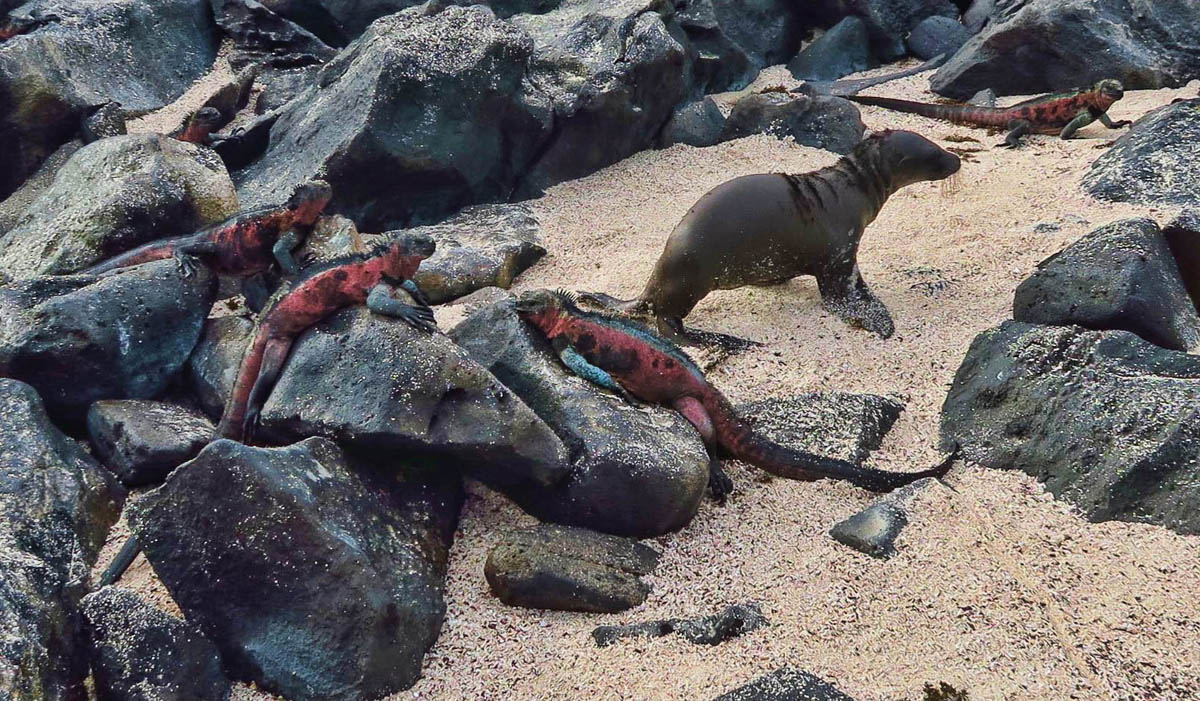 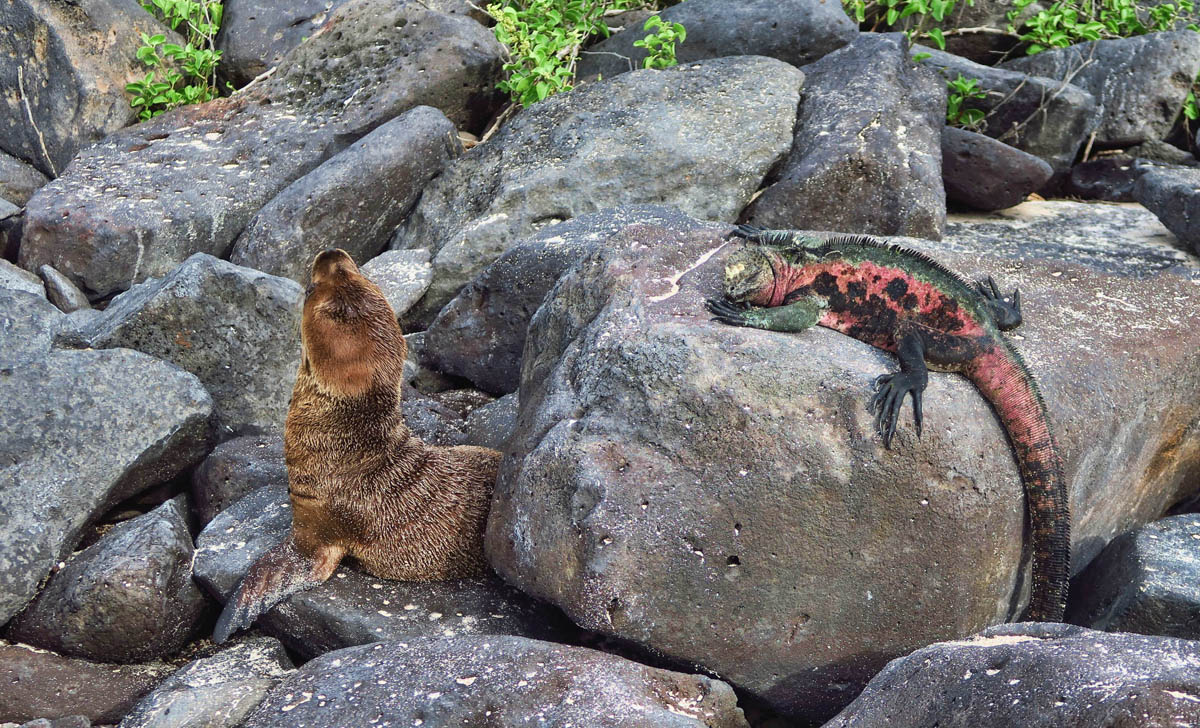 The babies have thicker fur. 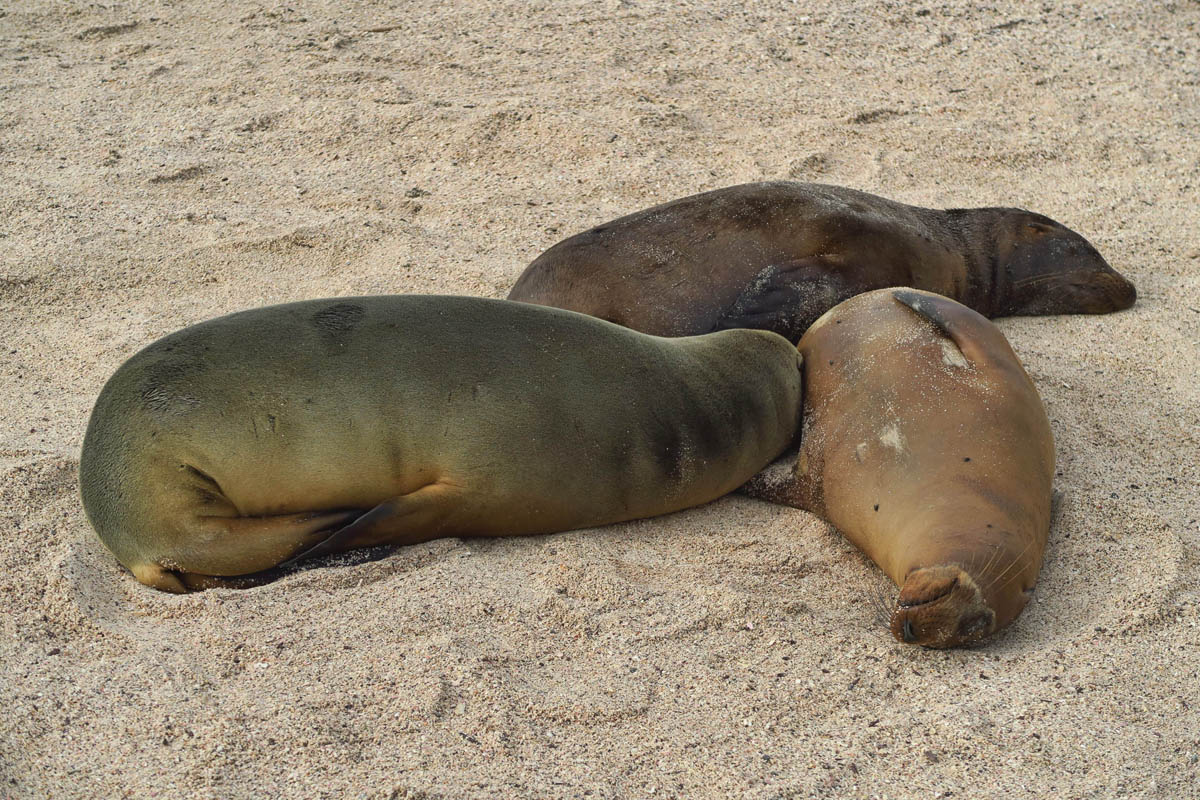 While smaller than the California sea lion, they still weigh between 100 to 550 lbs when grown. 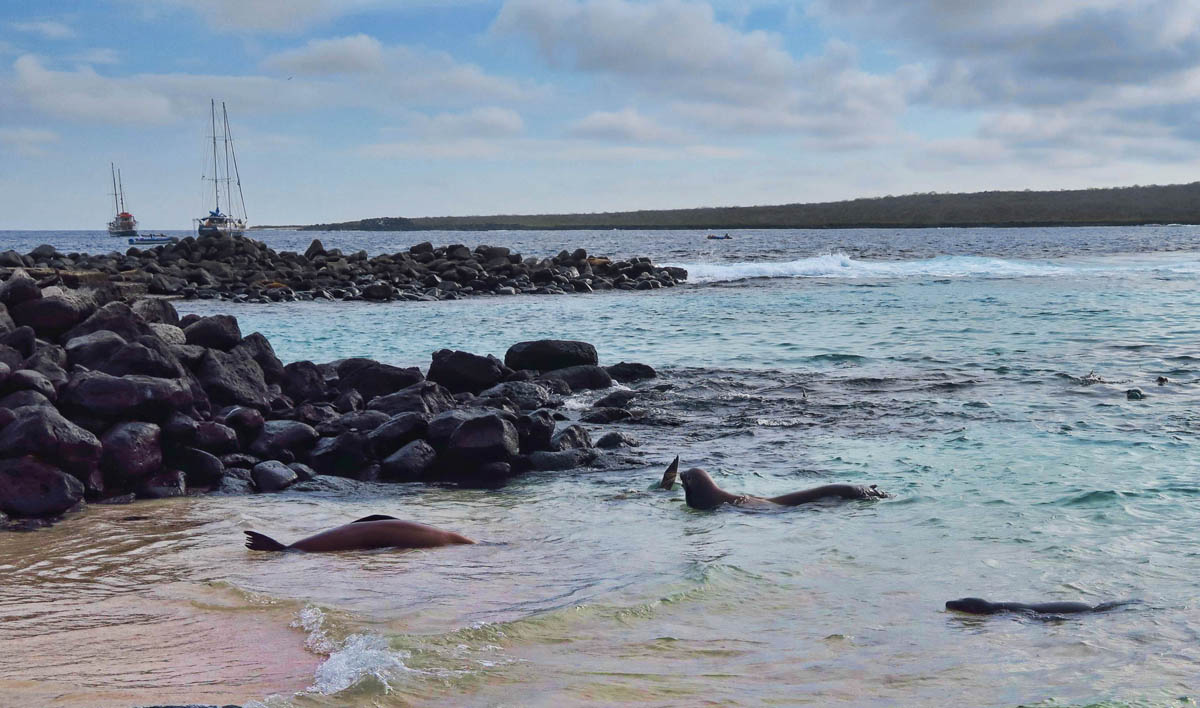 Continuing on around the rocky path, we stop for a rest high on a rocky outcropping overlooking the ocean. It’s a gorgeous place to sit and watch the seabirds soar overhead while watching the white frothy waves crash onto the rocks below, then dissipate into sea-foam over the aquamarine ocean. We sit for a while observing, talking about our appreciation for our good fortune to be in such a magical place. 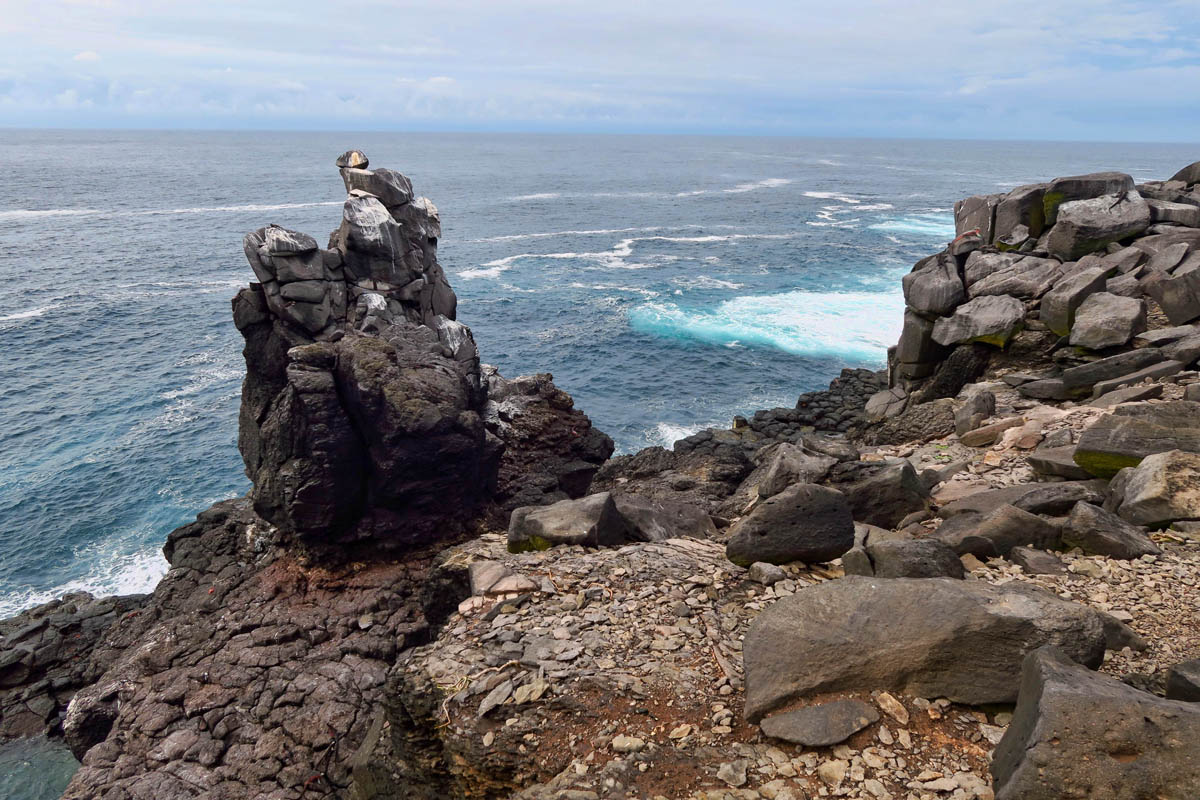 Lots of rocks to sit and watch the wildlife interact. 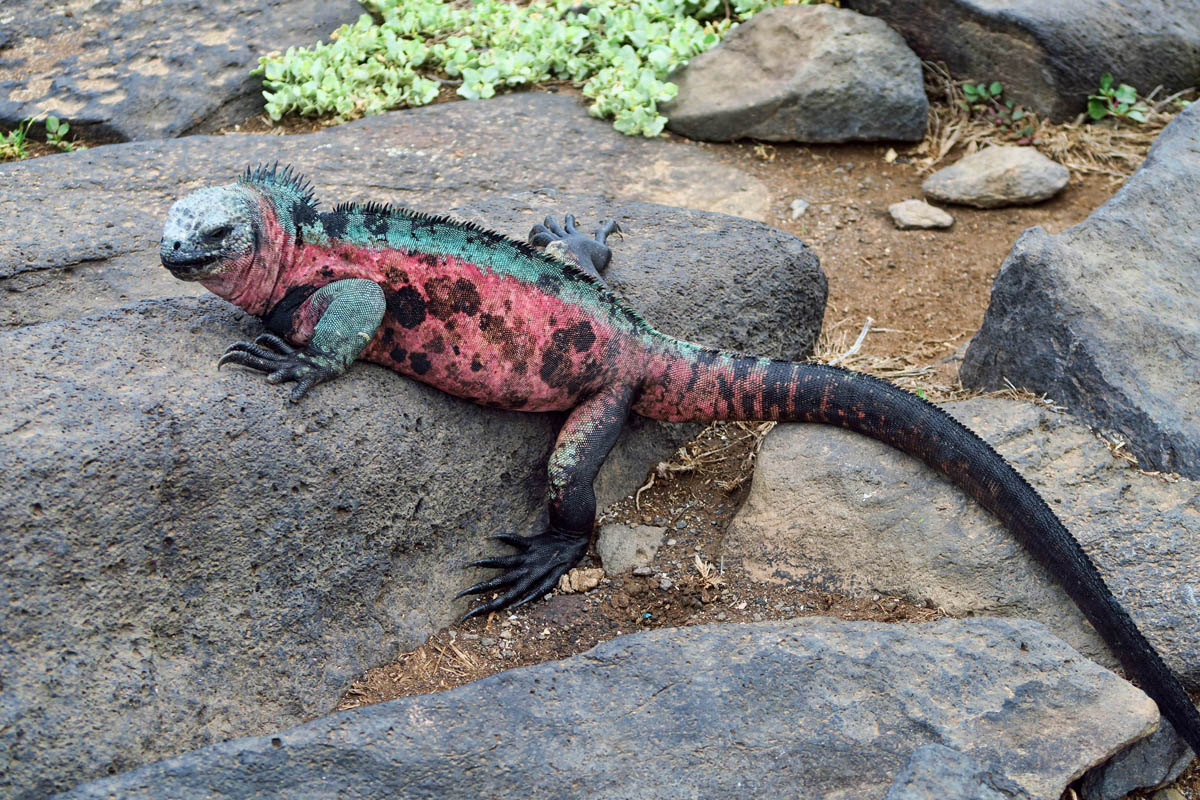 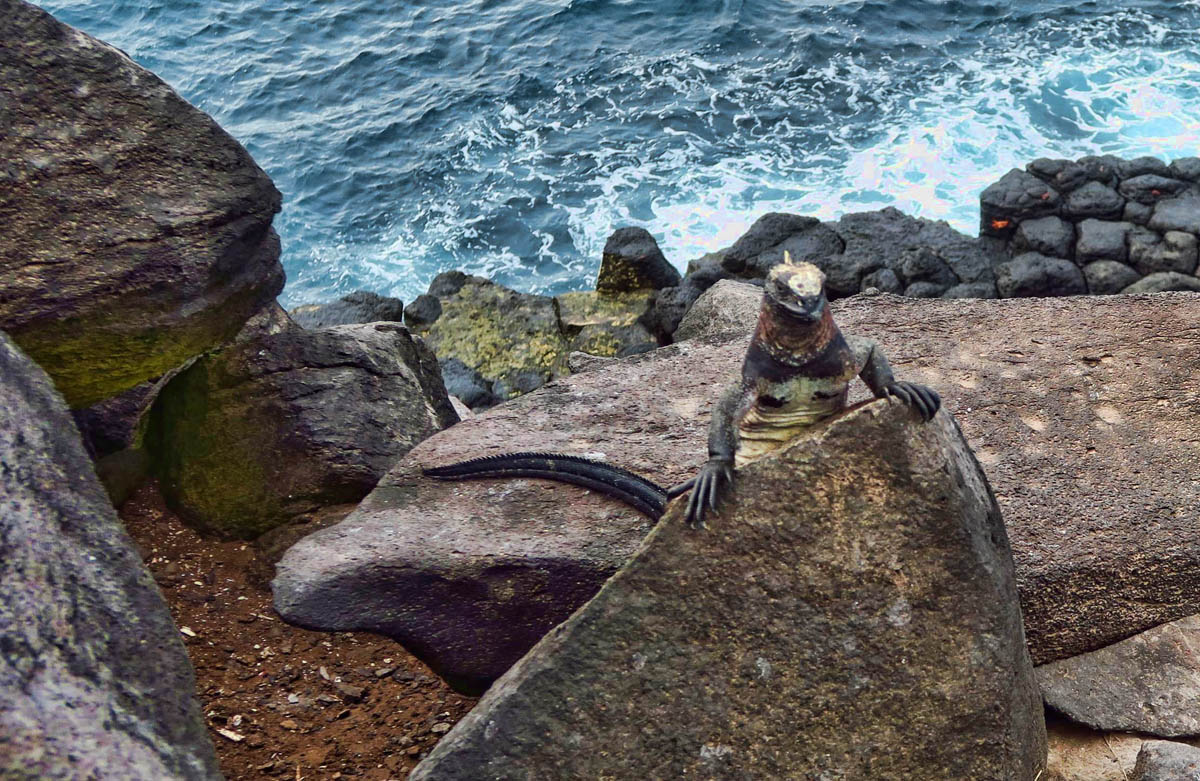 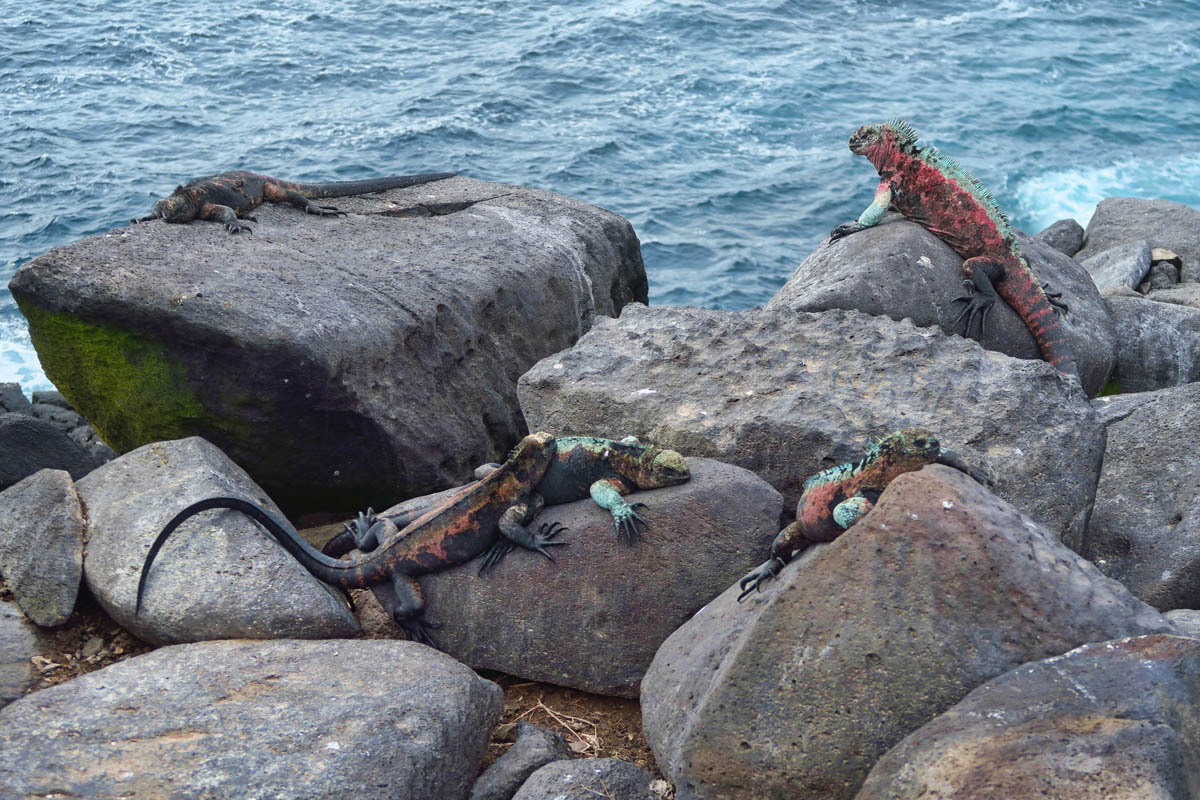 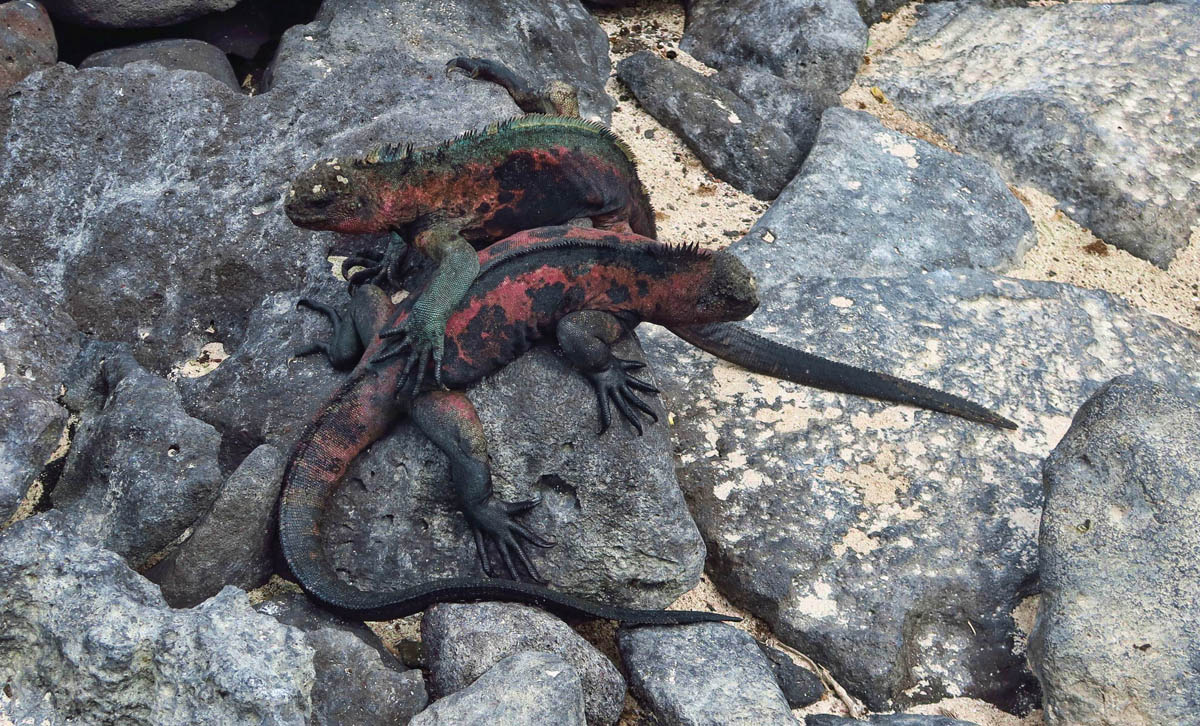 Just up ahead, I hear Fabian “shouting” back in a very loud, enthusiastic whisper, “It’s a HAWK! A Galapagos Hawk! “ We all fall silent while moving in closer, hoping the hawk will still be there while those of us lingering behind can catch up. But the hawk is in no hurry. He sits there posing on the rock as if waiting for his close-up. With only an estimated 150 breeding pairs left in the world, we are fortunate to have such a close encounter. 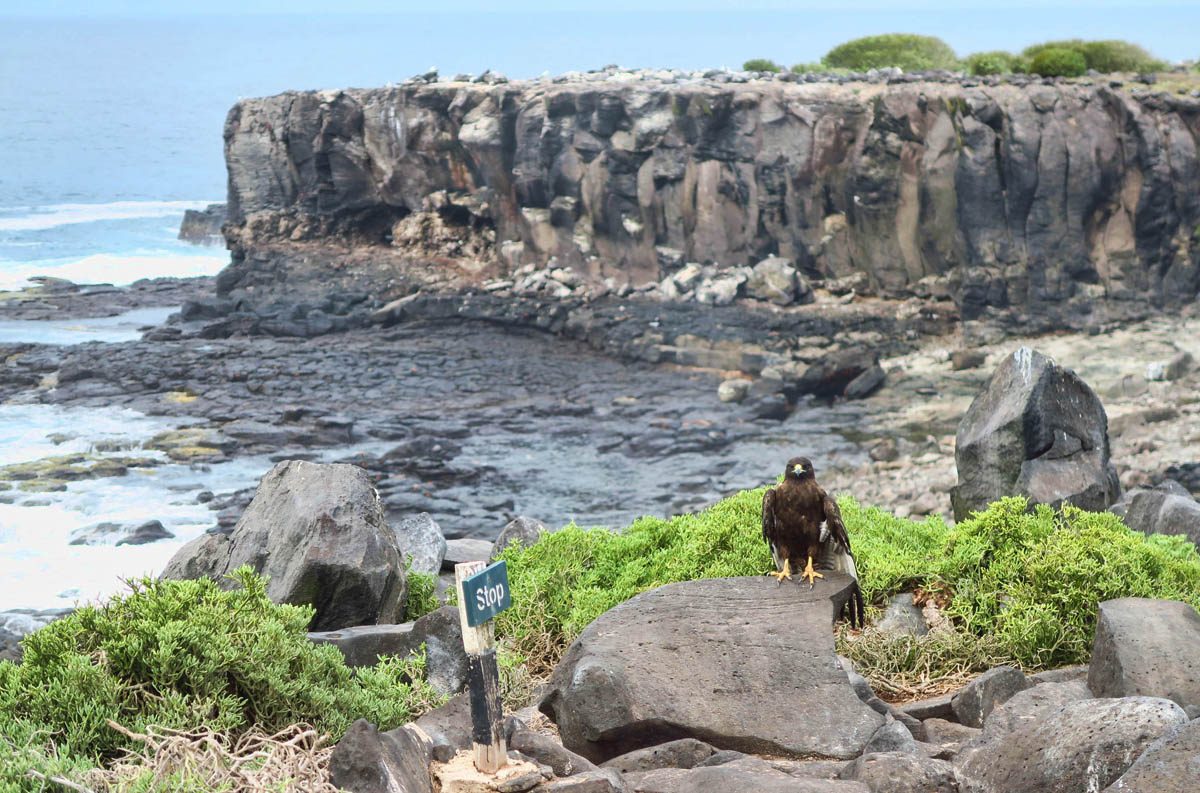 The Galapagos Hawk feeds on giant centipedes, locusts, lizards, snakes and rodents, as well as young marine and land iguanas, and turtle hatchlings. 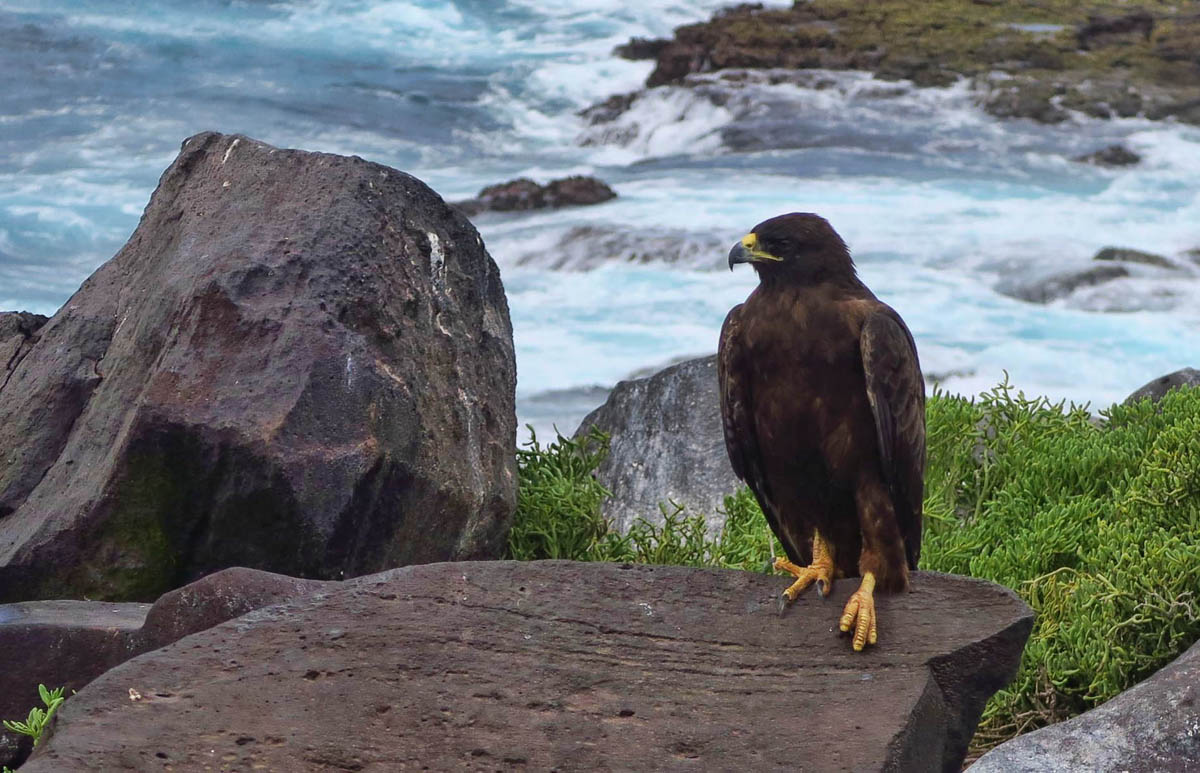 The Galapagos Hawk has a wingspan of up to 4 ft. 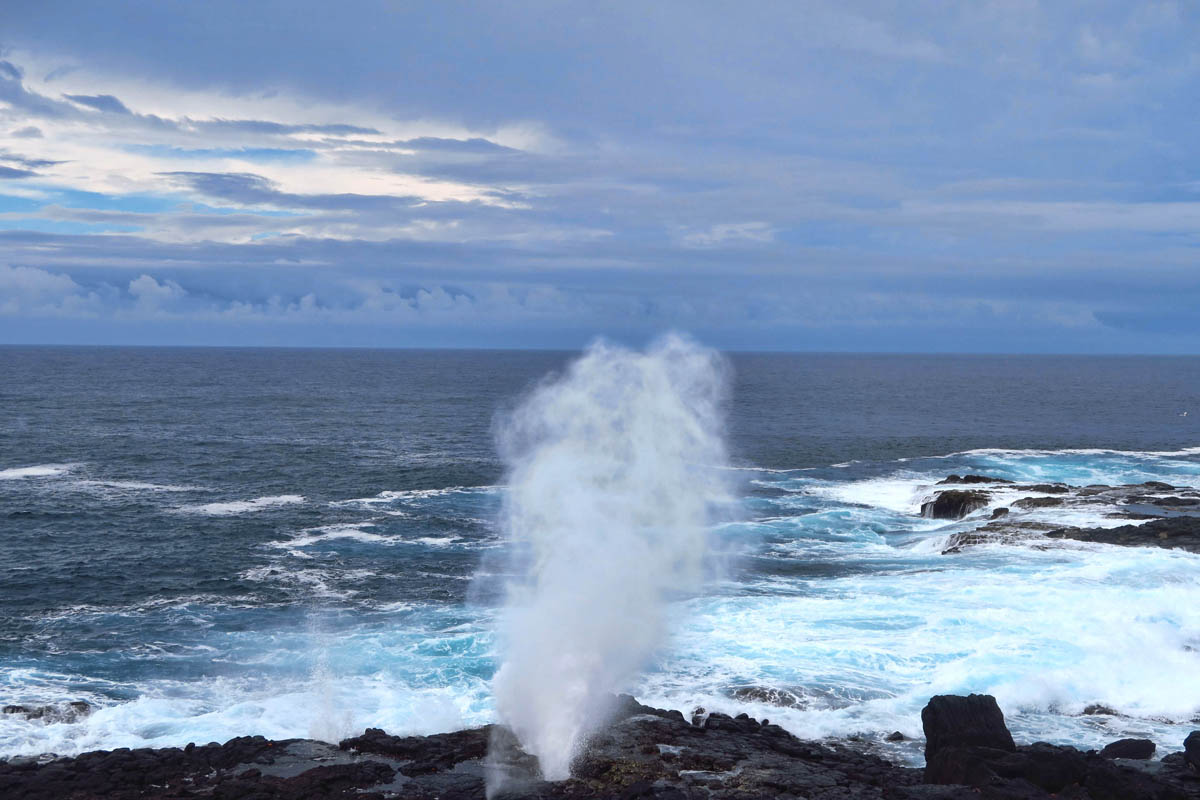 Blowhole along the hike.

Finally as we hike the loop back around to our landing site, we walk through a Nazca Booby rookery. There are three different types of Booby birds in the islands, the infamous Blue-footed Booby, the more rare Red-footed Booby, and the largest of the three, the Nazca Booby. They are ground nesters, typically nesting on rocky cliff edges. They are quite plentiful here, making it easy to see the fledgling chicks up close. 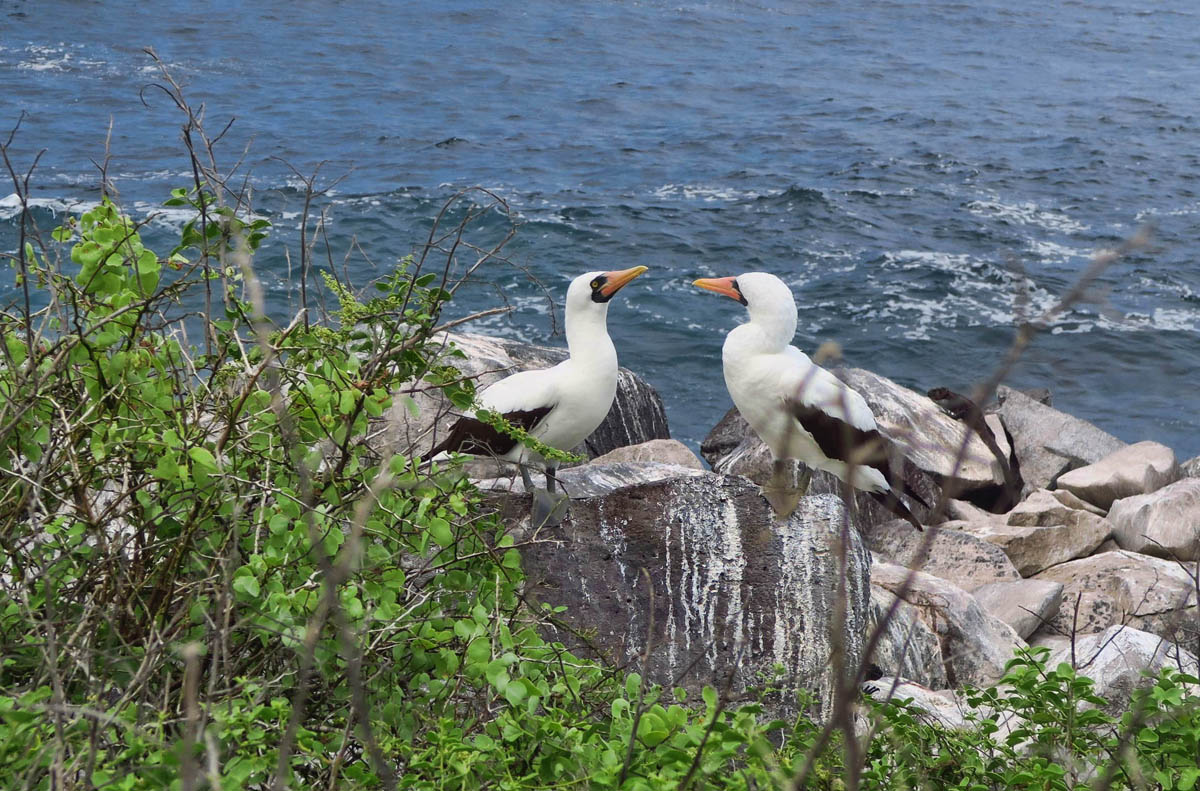 The Nazca Booby is the largest of the three boobies in the Galapagos. 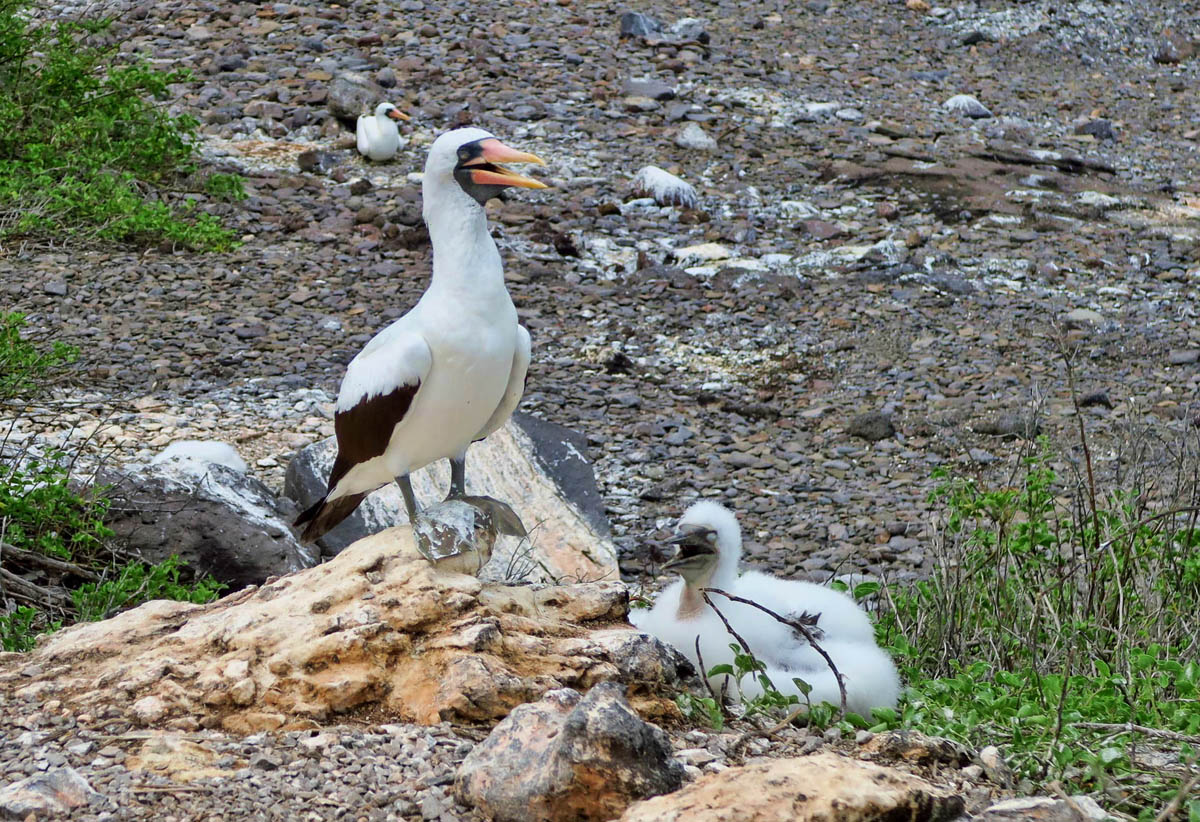 Nazca Boobies ypically lay two eggs at a time, then undergo a process called “obligate siblicide” whereby the smaller, weaker chick is kicked out of the nest and left to die. Nature is cruel sometimes. 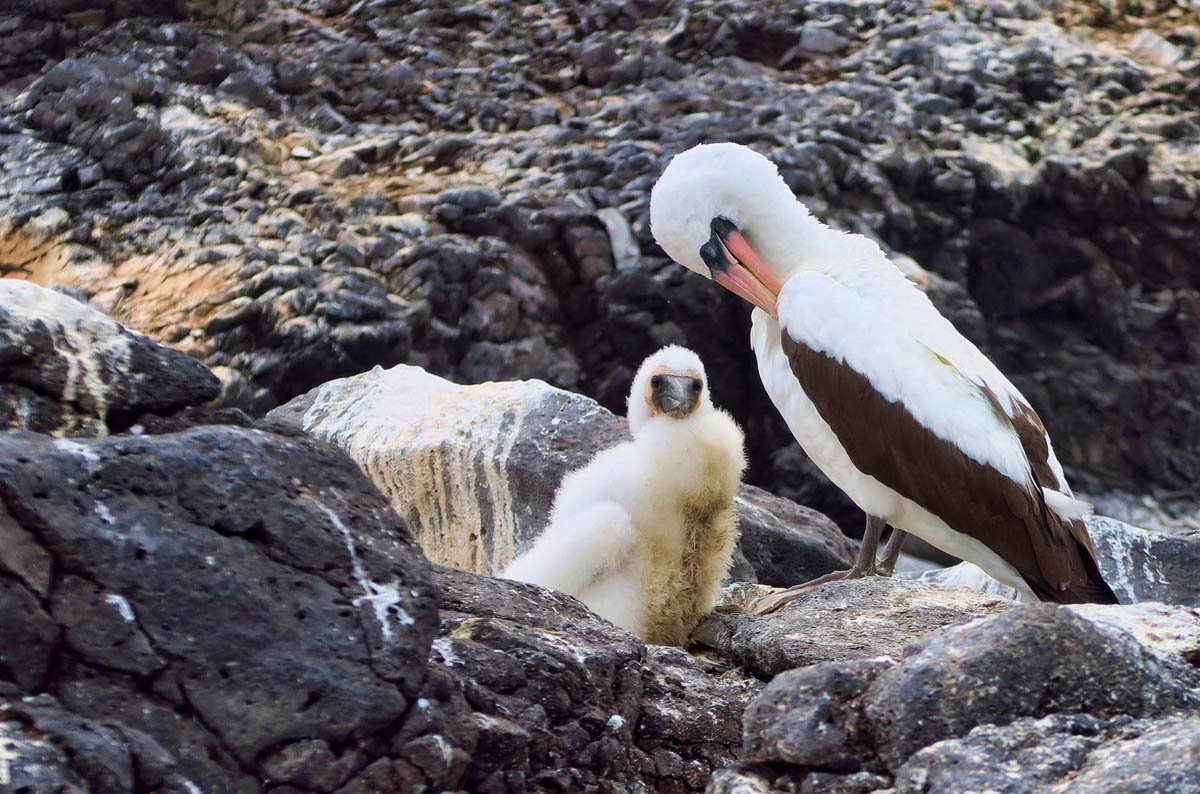 Nazca boobies catch fish by plunge-diving into the waters from heights of up to 90 ft, fishing for sardines, flying fish, squid and anchovies.

After lunch, we make our second landing on Española at Garner Bay at what has to be one of the most beautiful beaches I’ve ever seen. This landing is all about “beach time,” with the option to swim, snorkel, or just enjoy watching the sea lions. While the sea lions are the most prolific species of marine life in the Galapagos, they are even more so here. What looks to be giant rocks along the beach in the distance turns out to be dozens of sea lions lounging about. There are an estimated 50,000 in the archipelago.

I snorkel out around a large rock offshore with the group, but return early. While it is beautiful and fish are abundant, with schools of salemas being so thick beneath me they resemble a moving floor, I want to spend my time on the beach. I figure I can snorkel in lots of places, but where else can I sunbathe with sea lions? 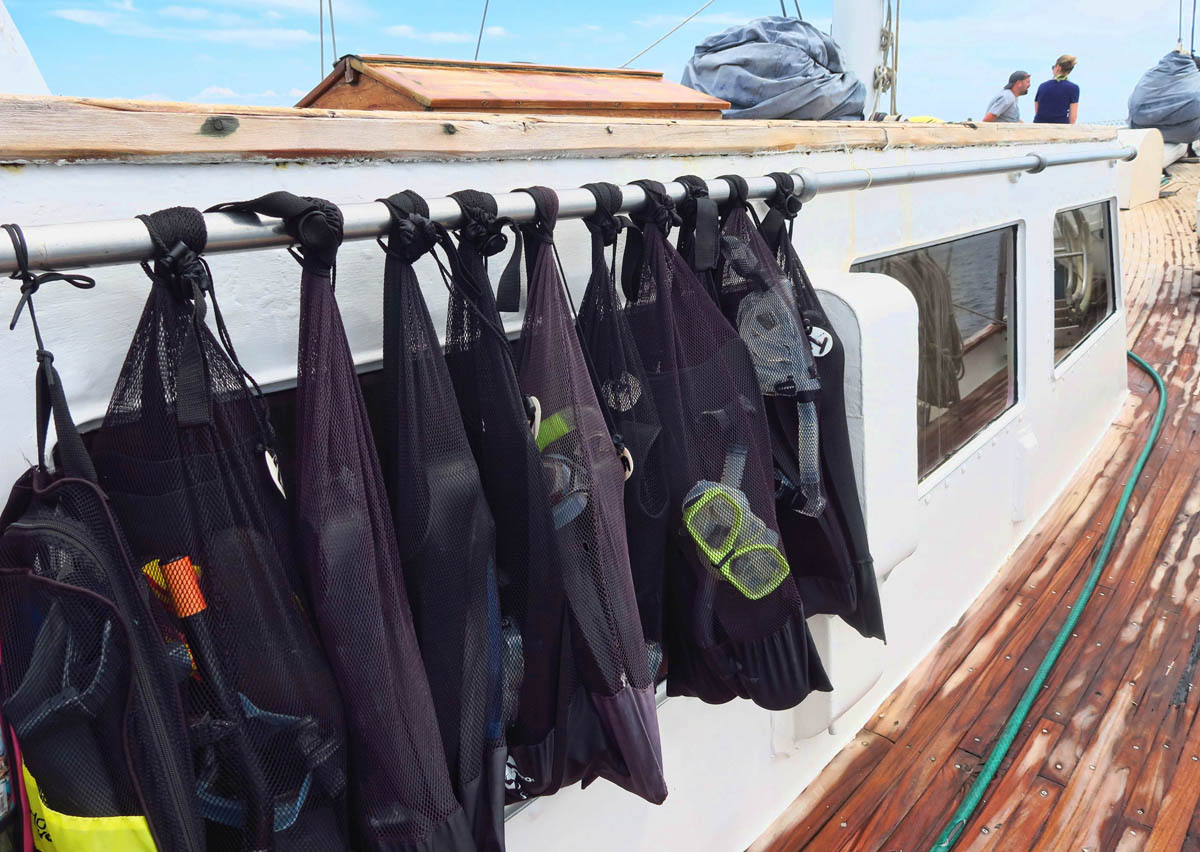 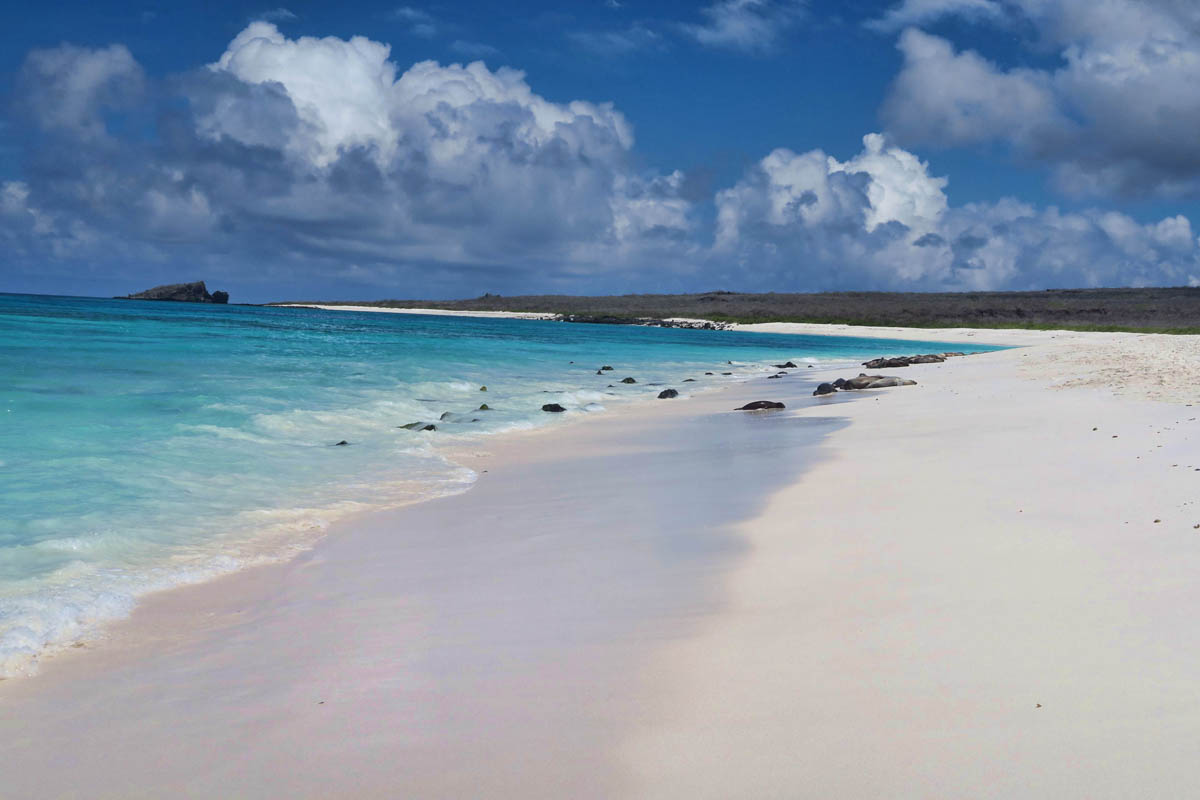 Coming ashore at Garner Bay, I am in awe of the beauty of this beach! 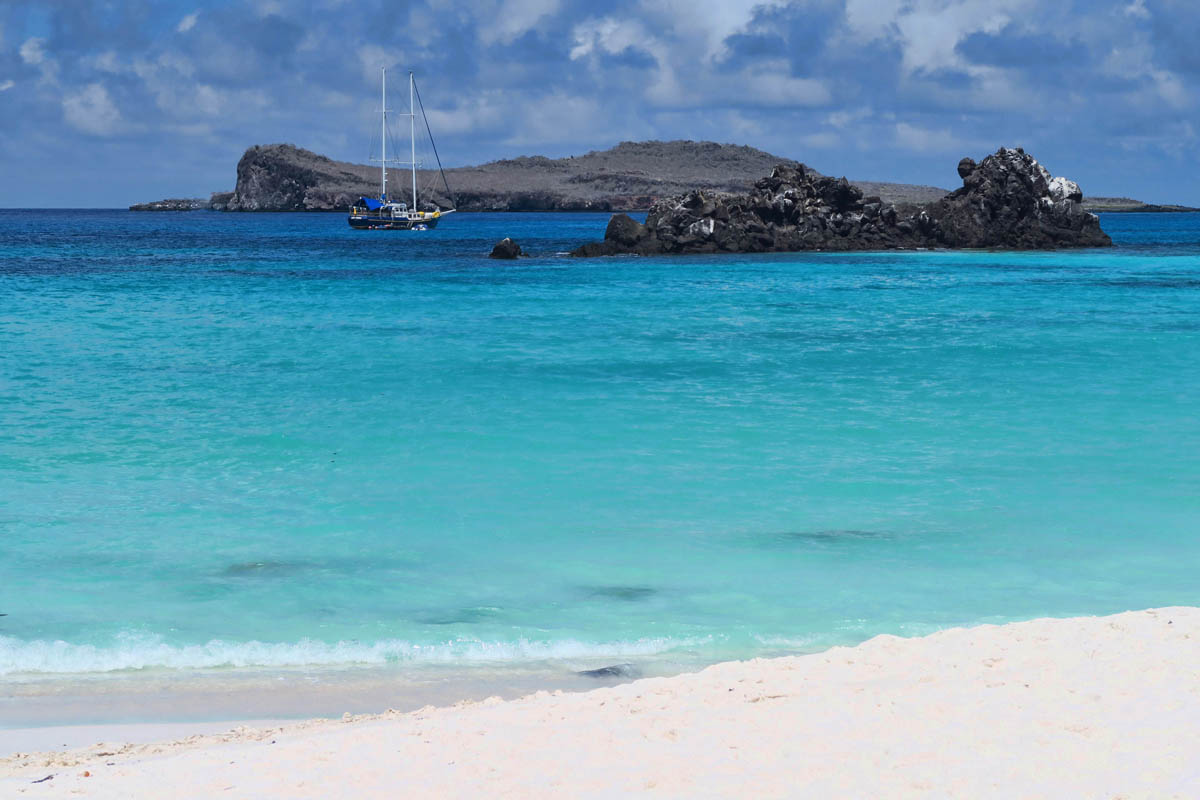 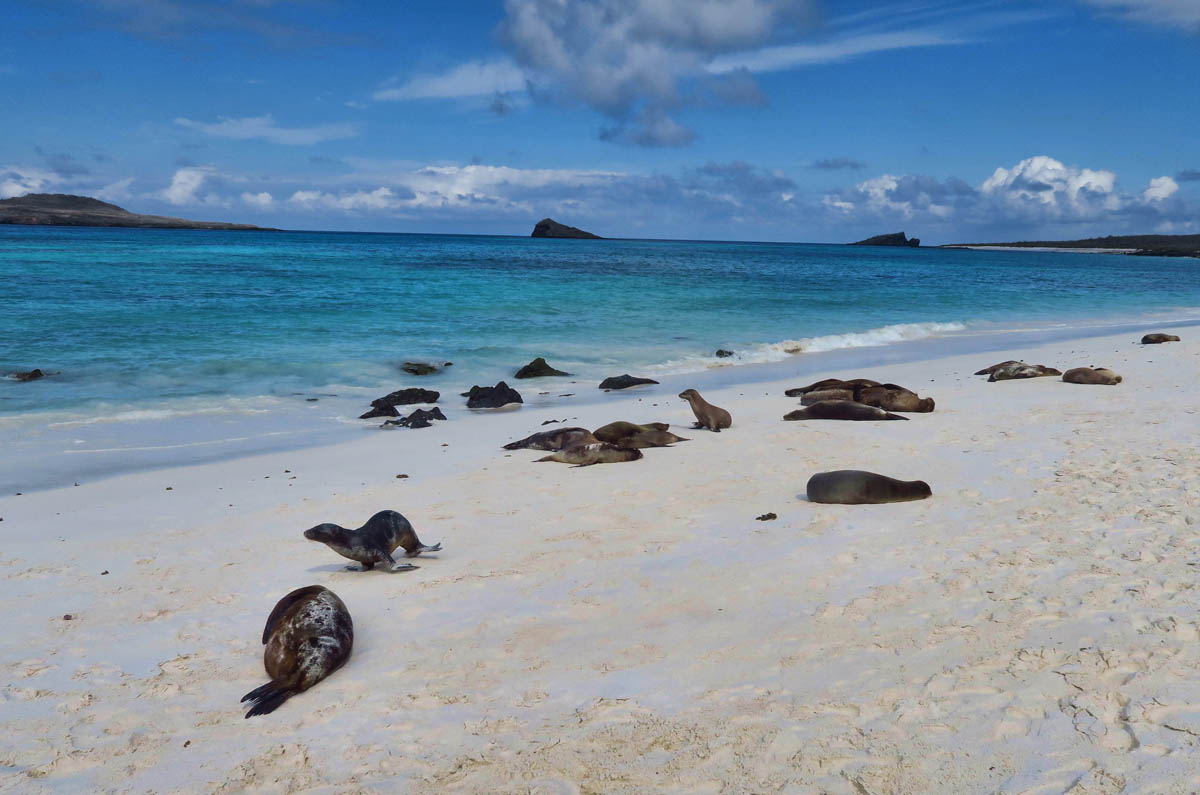 The only “crowds” here are of sea lions. Lots of pups frolicking about here. 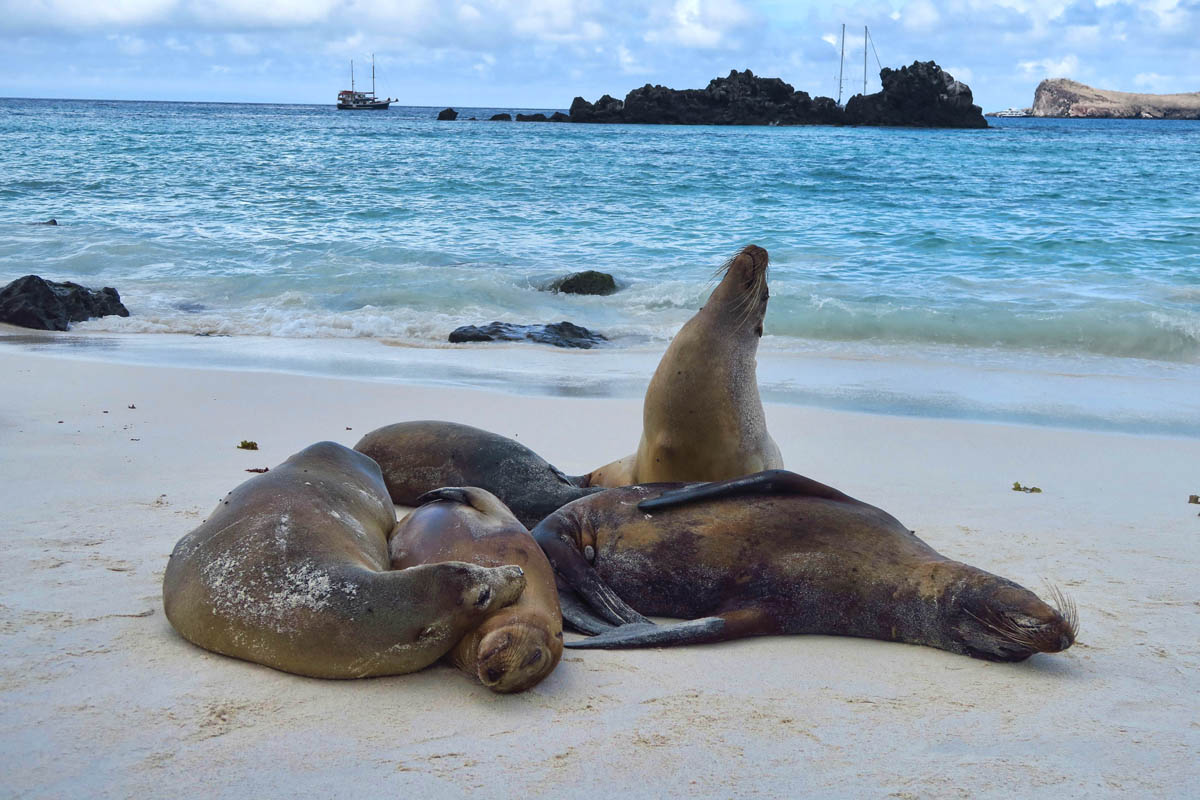 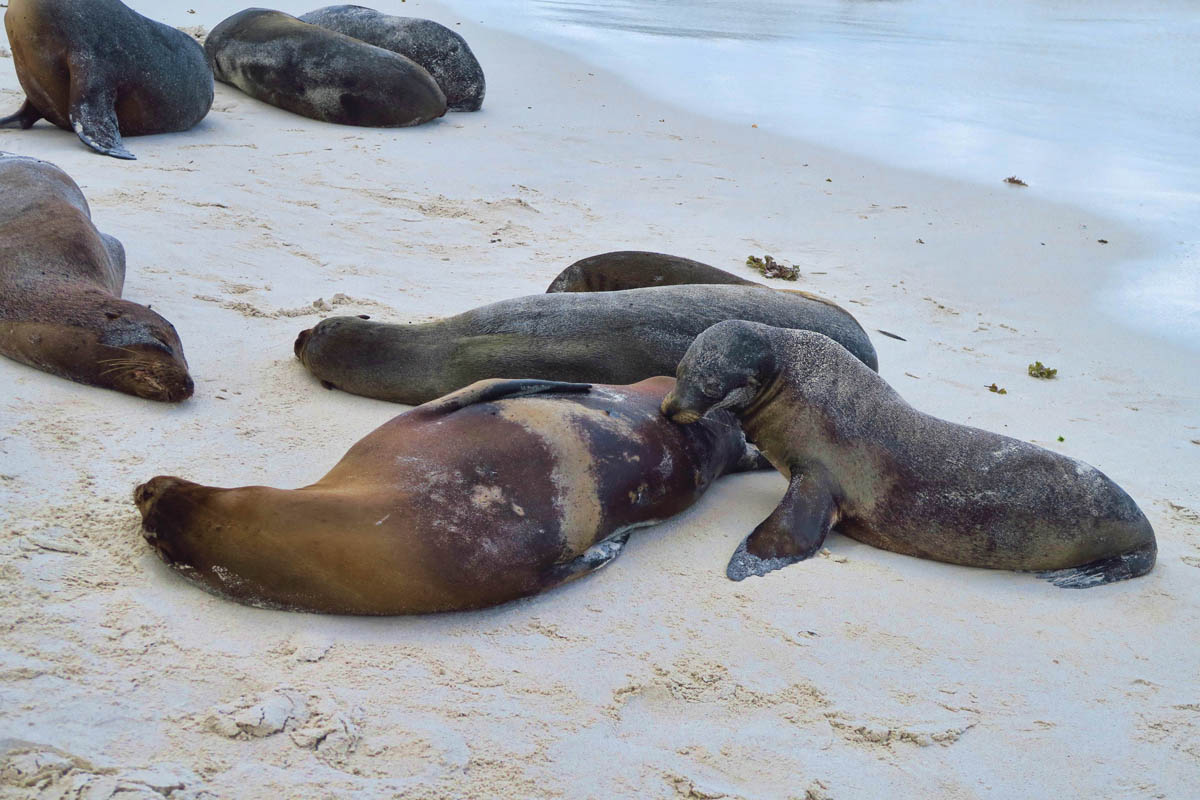 Pups continue to nurse for a year, so it is not uncommon to see a pup the size of its mother, still nursing. 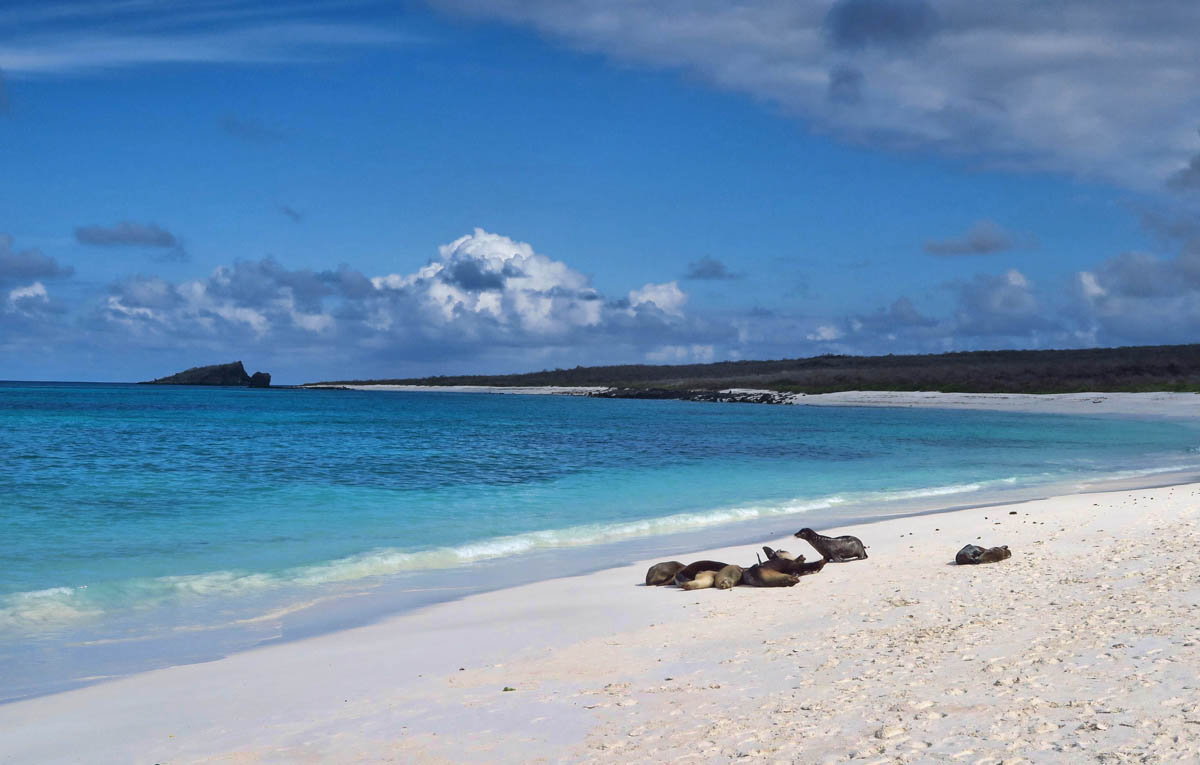 Another spot on the islands I find hard to leave…

I find it interesting up to this point, there has been no talk of evolution. While we talked of the preservation work being done at the Charles Darwin Research Station, there has been no mention of Darwin’s work, the Origin of the Species, or the man himself. I think Fabian, our Naturalist Guide is cautiously avoiding the controversial topic of evolution, not wanting to offend anyone on board who might choose to believe it had all been created in a week.  So we ask him. Once we broach the topic, he is eager to answer our questions, and in fact, offers to show a video documentary on Darwin’s five weeks spent on the Beagle back in 1835, narrated by David Attenborough. The crew even popped some popcorn!

We get underway before sundown in route to San Cristobal, but stop halfway to enjoy dinner without the sound of the engines. BBQ pork chops are served as the entrée. While I have not loved the main courses all that much, I must say the soups and salads have been exceptional.

We wouldn’t get back underway until 2:30am, long after everyone was fast asleep. 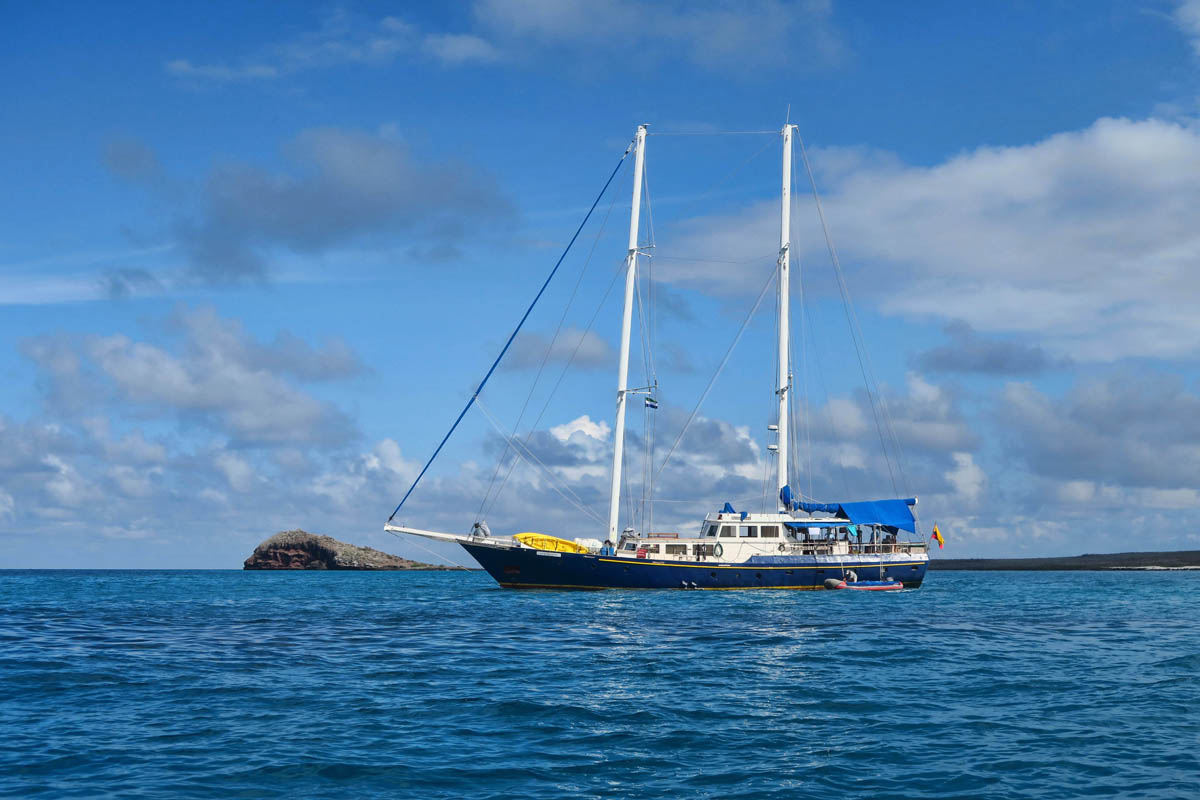 “One of the things Darwin’s work has taught us is that we break nature’s connections at our peril. Yet break them, we do, at ever-greater speed. the impacts of our growing population and our consumption now directly threaten our own future.” ~ Sir David Attenborough