Last night after dinner when I came up on deck to take my usual photograph of today’s itinerary and our chart progress posted on the whiteboard, I turned on the camera with every expectation that it would function perfectly. After all, it’s now taken almost a thousand photos since I paid $140 to have it repaired back in Quito. Instead, I heard a sickening grating sound, and saw only half the view through the viewfinder. A grain of sand was stuck in the “curtain,” the retracting shield that covers the lens. I thought I had been so vigilant in taking care of the camera since the repair job, so I was surprised to look into the padded case to see several grains of coral sand. What a heartbreak! After trying every method I could think of from blasting air through a straw to prying with an open paperclip, the “curtain” would not fully open. Lights out.

How is it possible, one might ask, that someone would come on such a significant bucket list trip known for it’s photographic opportunities with only one camera? No backup? Well, when I left for my San Miguel house-sitting gig back in December, traveling onward to Ecuador was nothing more than a casual whim. Couple that with the roulette chances of being able to book a last minute cruise, and I was not as prepared as I should have been. Back in the Winnie is not only a GoPro knockoff, but a nice waterproof camera that my friends Linda and Chester gifted me. Did I think to bring them? Oh, well, it’s just as well.  If I had brought them along, they would have likely been stolen in Quito with all my other electronics. So I try not to grieve. At least it happened on “Day Seven” and not “Day One!”

Instead, I will just make it my intent to commit every aspect to memory, studying each detail as if my mind is a mental darkroom, dodging and burning each photographic image into my brain. That, along with “a little help from my friends,” in this instance, Tom and Kathy from Oakland, California. Tom is quite an accomplished photographer, and likely one of only two people who took more photos on this trip than did. Tom has graciously agreed to let me use a few of his photos from this day, since I have none to share of my own.

Tom and Kathy have an impressive background of public service during their career days, but are now “serving” the public in an even more interesting endeavor. They own mobile pizza ovens! If you happen to be in the bay area, check out their Copper Top Ovens website for their current mobile location, and stop by for a pizza! I know it’s good because they are good people! 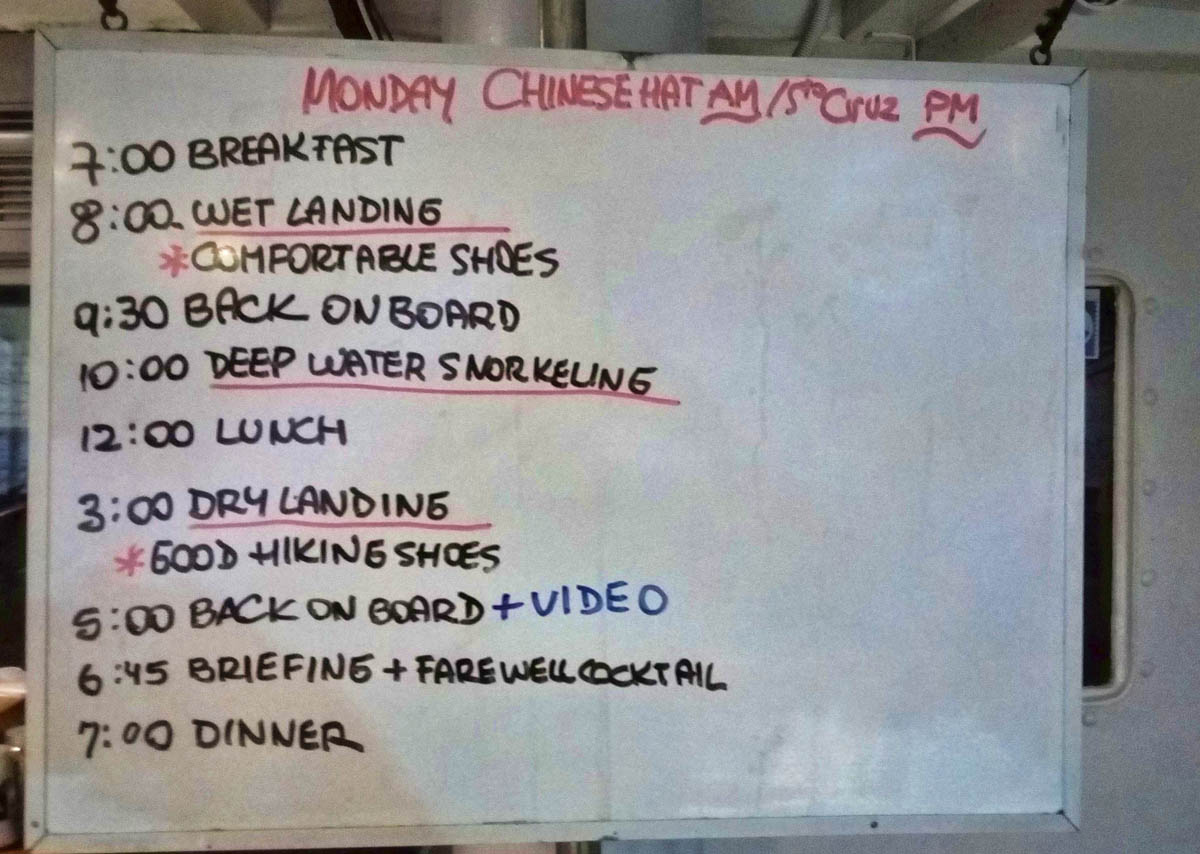 Our wet landing on the shore of Sombrero Chino (Chinese Hat) is the most idyllic, pristine beach I’ve seen yet. I knew we were in for some incredible photo opps, simply because I now had no camera. The “shutter” in my mind’s eye was clicking around every corner. First came the two young sea lion pups playing right on the shore where one reached over to pat the other’s head. Next came the hundreds of Sally Lightfoot crabs in their brilliant orange and red armor, tiptoeing across the black lava rock like ballerinas on pointe. A marine iguana swims through the shallows right in front of us, the first I have seen underwater. And there is the “candelabra cactus” that we haven’t seen before – green spindles with individual constricted sections looking like Popeye’s bulging arms. And the contrast of the coal-black lava cones above the Baja-blue water as calm as a lake, where the sugary white sand highlights its riotously turquoise color. It isn’t any wildlife we haven’t seen before, really, but in trying to commit it to memory, it all seems as if I am viewing it through a more intimate lens. I concentrate hard, hoping to never forget this bay… 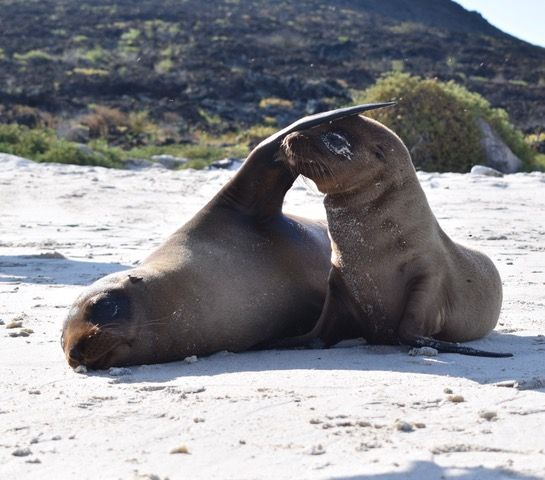 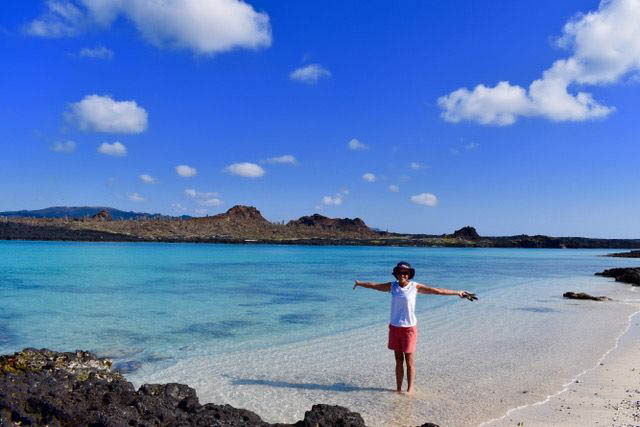 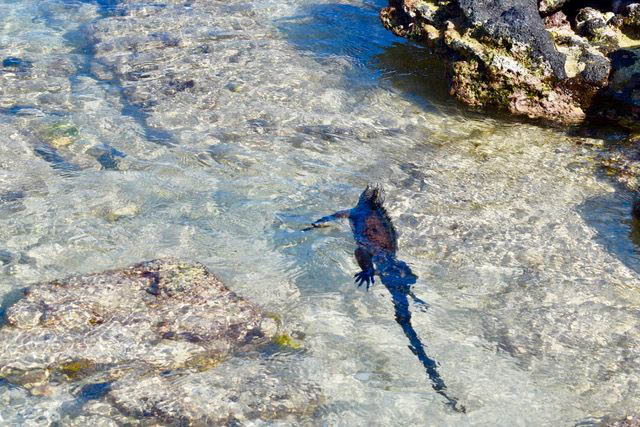 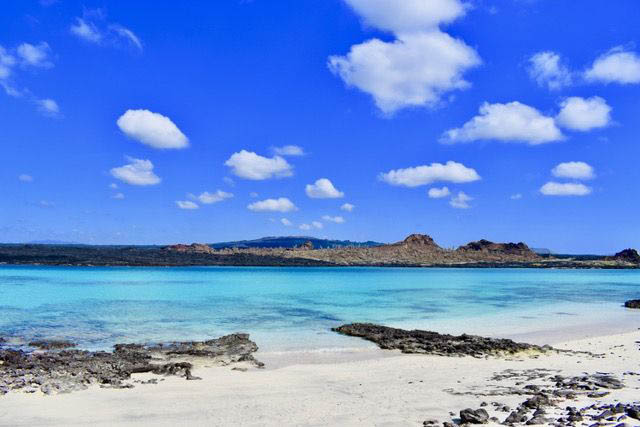 If there is a more beautiful beach, I have not seen it. Sombrero Chino, photo courtesy of Tom Gerstel. 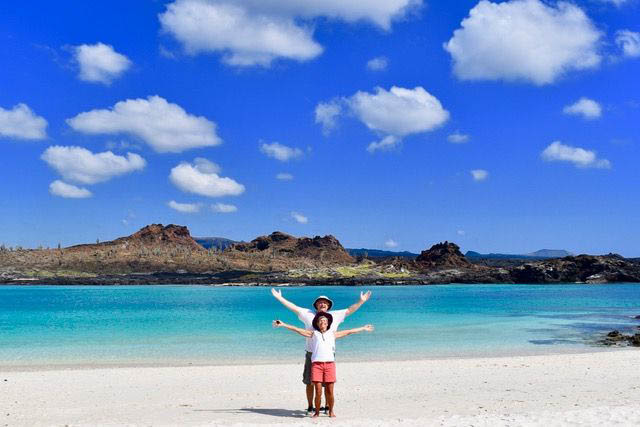 Friends Tom and Kathy from Oakland (I actually took this one with Tom’s camera.) 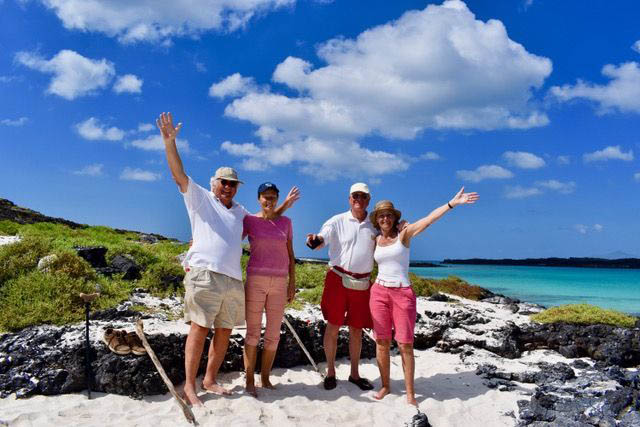 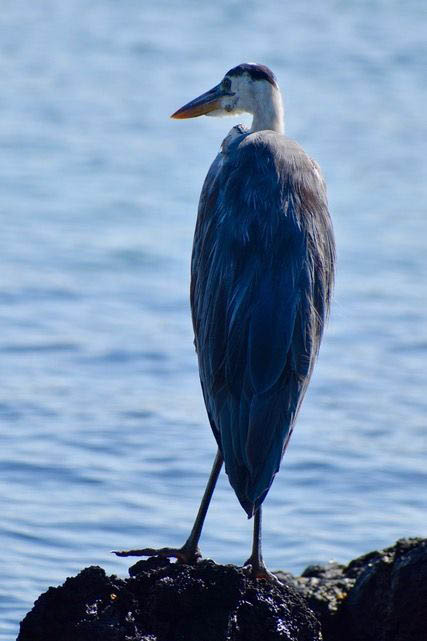 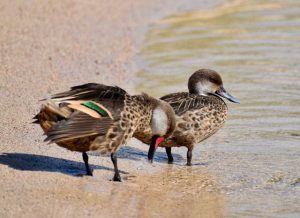 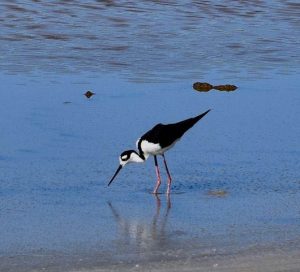 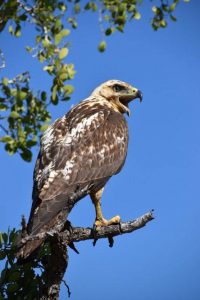 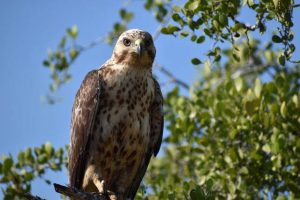 After lunch, we snorkel the wall across the channel where we just hiked. The snorkeling just keeps getting better and better, as this is my favorite snorkel yet. Good visibility, with a couple of white tip sharks cruising by. While others are lucky enough to see couple of penguins, I am lagging too far behind to catch them, but delight in schools of yellow-tailed surgeon fish, sergeant majors and tiny wrasse so thick I can hardly see through them.

It feels like time is pouring through the sand-filled hour glass, but I have a little time before our last activity of the day, a hike on Santa Cruz island. I rush to get up on the top deck as quickly as possible to enjoy my last few hours on the boat, as I don’t know how long it will be before I have another chance to be on a sailboat again. I ask the crew for help putting up the bimini for a little shade, then I stretch out on a deck cushion to enjoy the break before the next activity.

I vowed before taking this cruise not to miss a single opportunity. But now I was at a tipping point as to which activity would afford the most pleasure on this, my final afternoon…lounging on the deck of a sailboat with no other boats in sight, or hiking through more land iguanas. Plus, Fabian told us to be prepared for “wildlife” we had not net encountered on this trip….mosquitoes….which meant slathering on the bug spray. And just like that, I realized I wasn’t going anywhere. So I put on some boat tunes on the vintage Android, the only electronic device I had left. I got me a cold Ecuadorian Pilsener from the fridge, and parked myself on the top deck to await the simultaneous equatorial sun set and full moon rise diagonally across a clear evening sky.

Tonight was farewell cocktail hour, so all the crew donned their clean white shirts and came up for a toast. The chef had baked us a nice fancy cake with “Feliz Viaje” written on top. It was a bittersweet celebration. 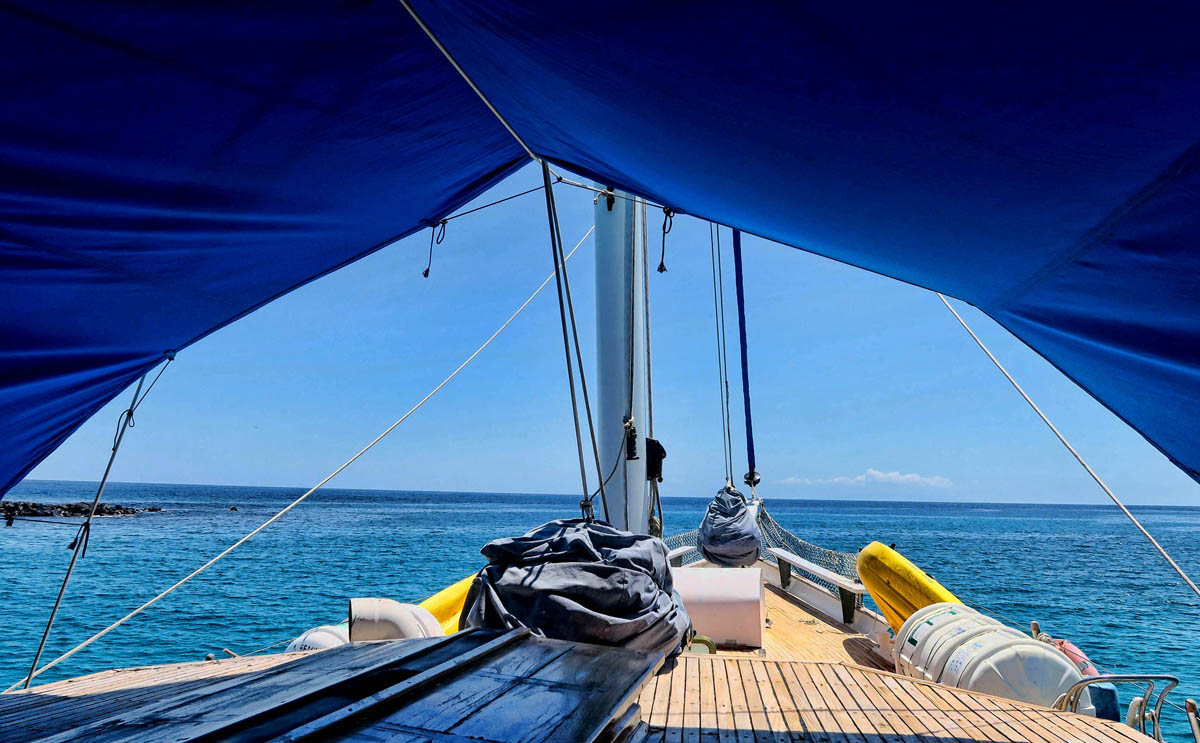 My favorite vantage point from the top deck of the Beagle. 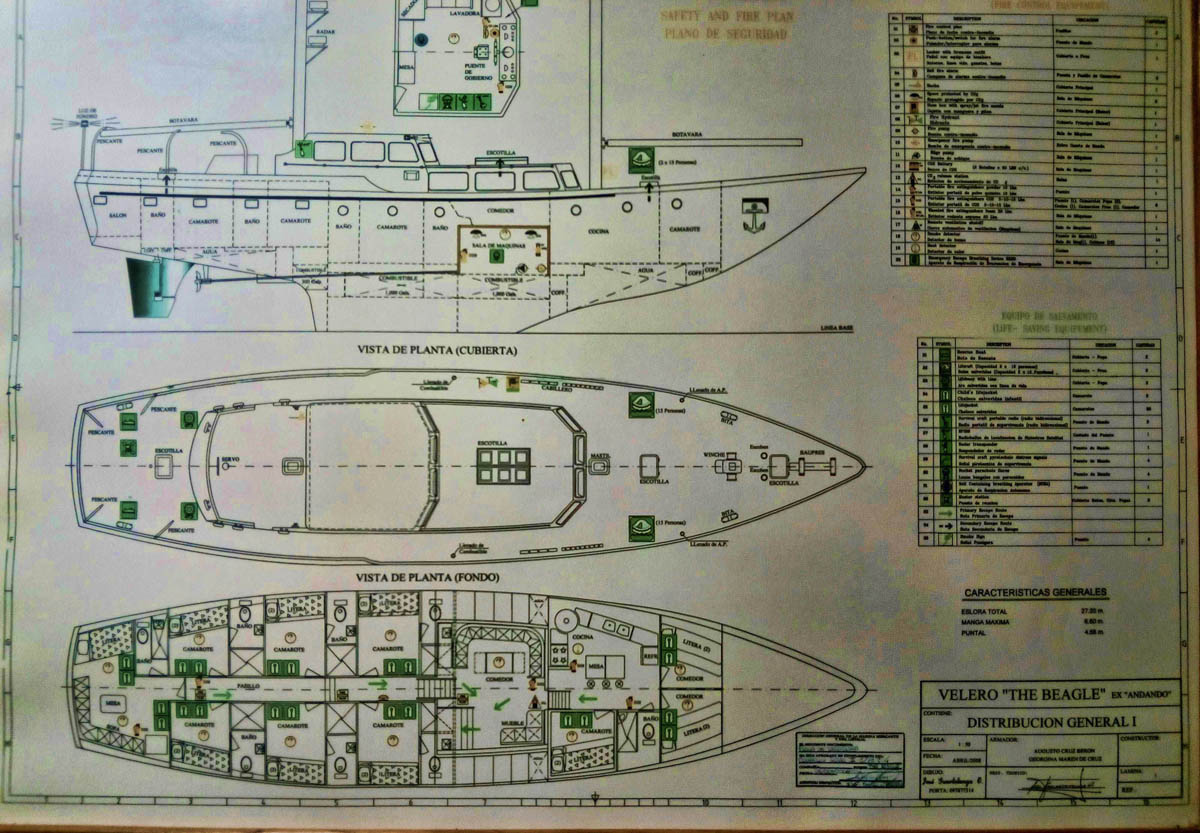 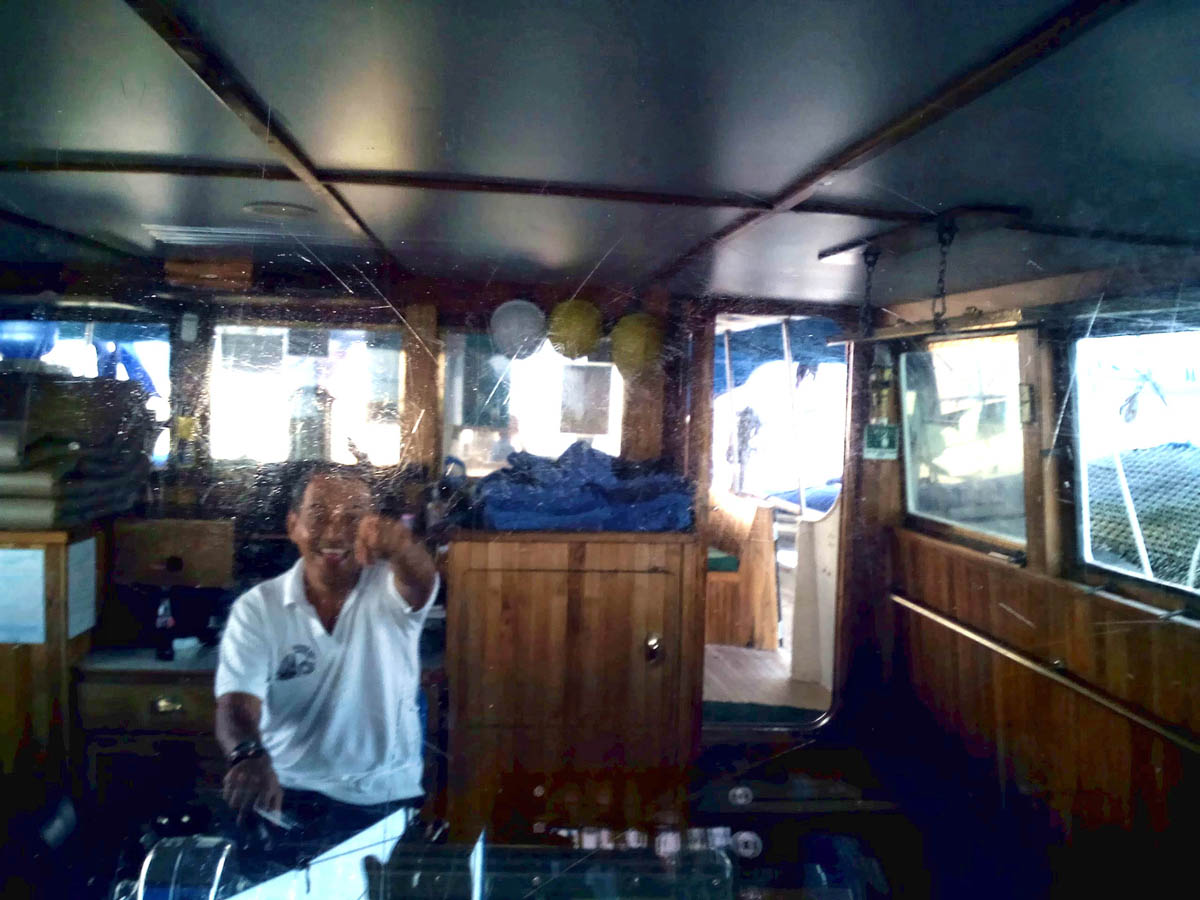 This is “Captain Washington.” Bad photo taken through the dirty front deck window with the android, but still it’s a captured memory. 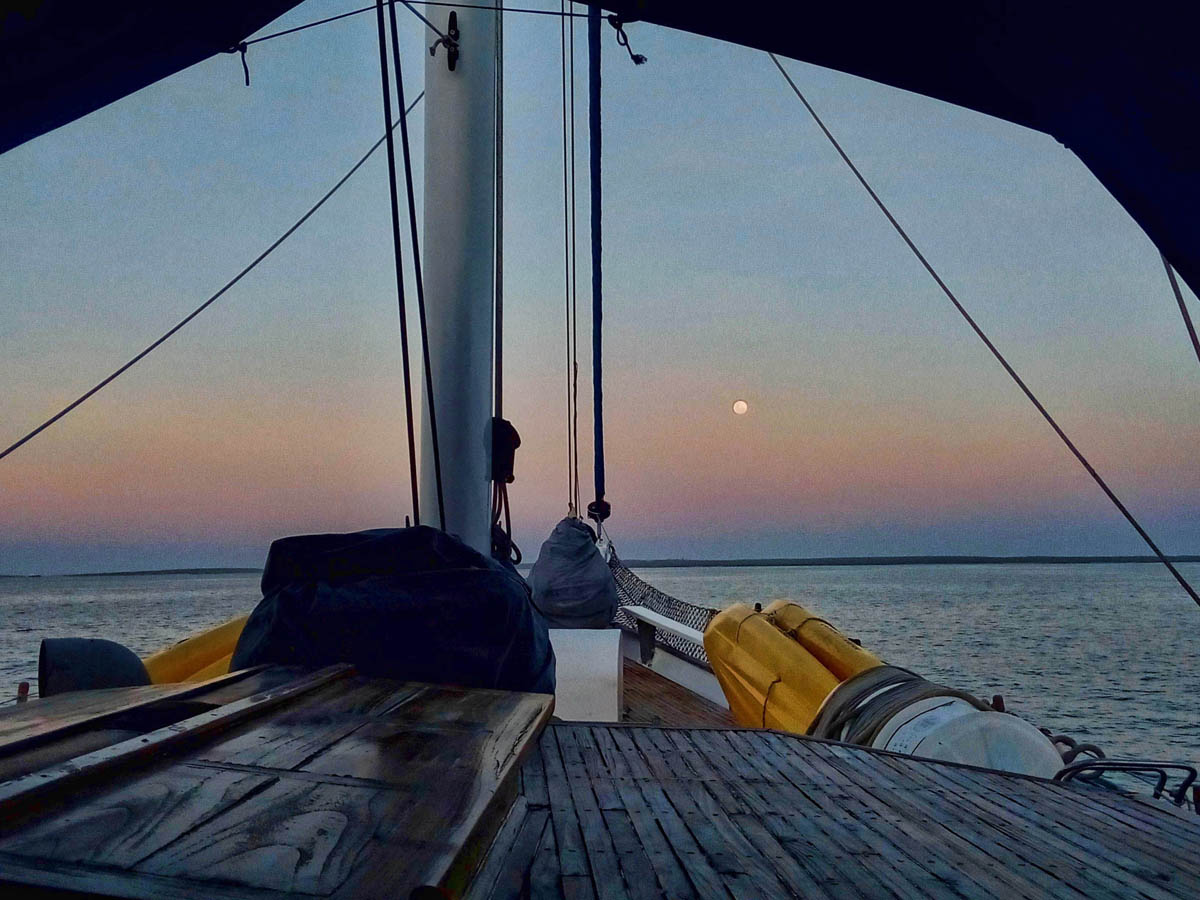 Watching the full moon rise from the top deck. 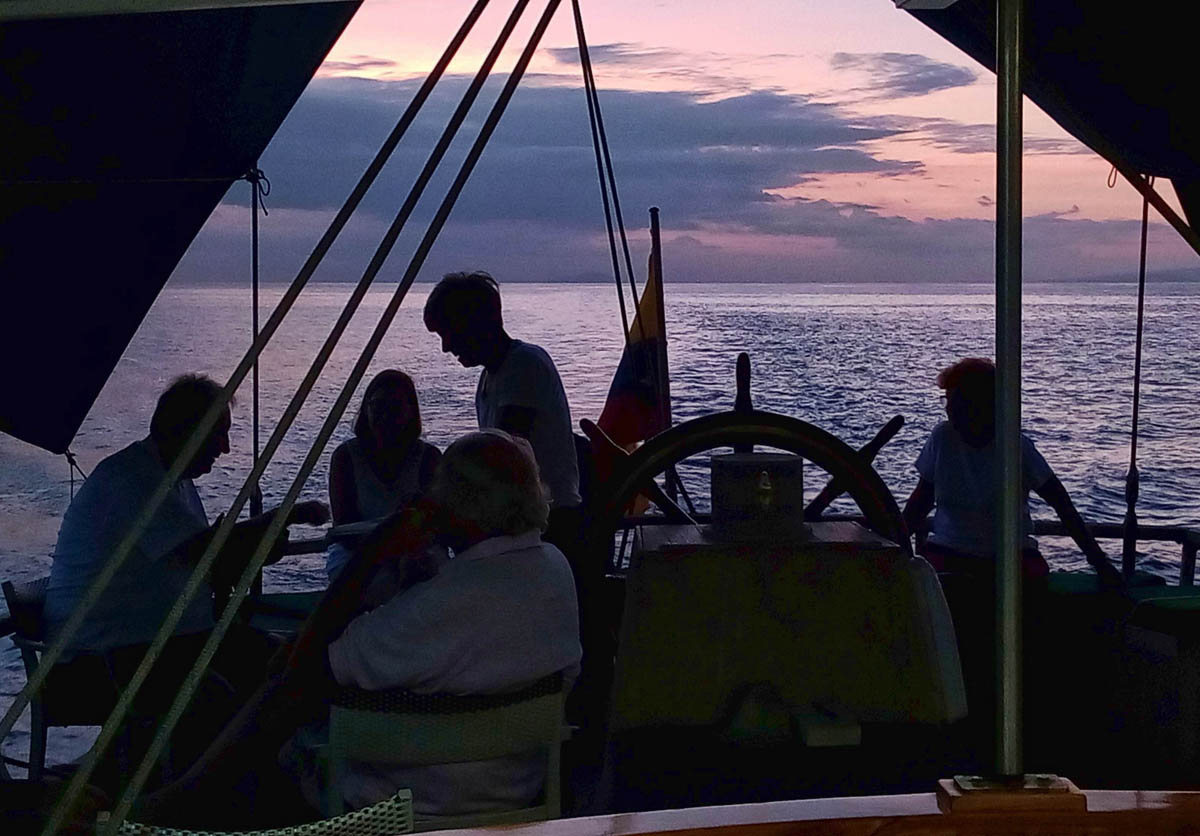 Last sunset on the Beagle. 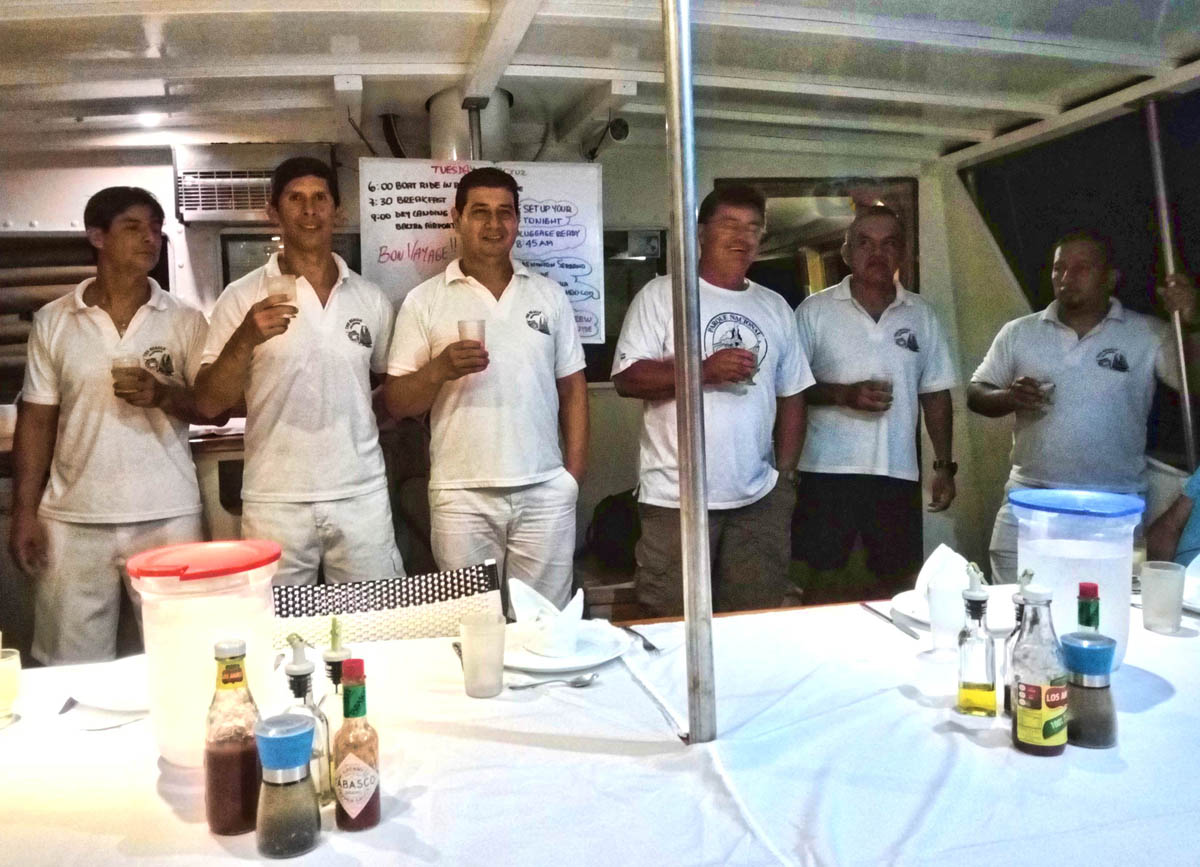 On the last night, the crew comes out for a farewell toast. 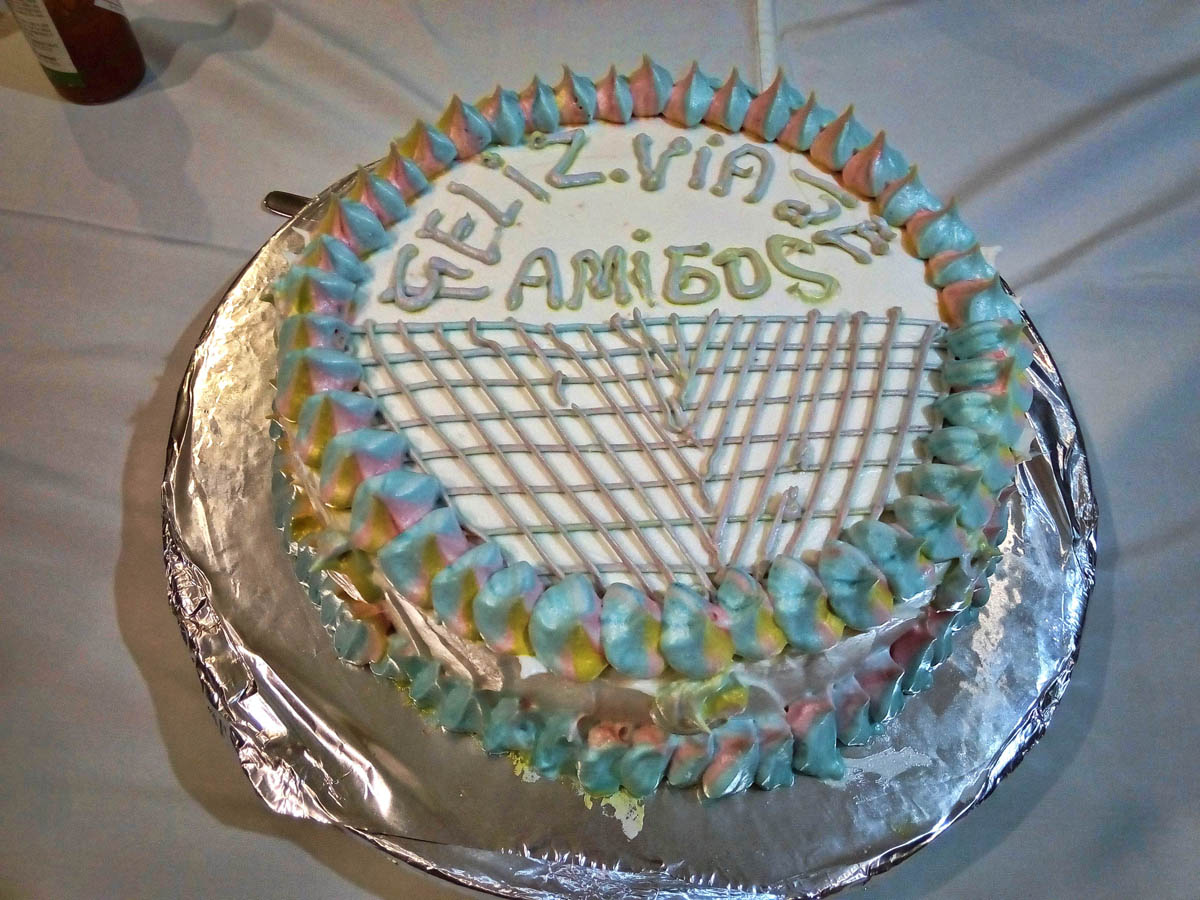 The chef prepares a cake to wish us all “Feliz Viaje,” or “Happy Journey!”

Back down to the cabin to pack and lay out my clothes for our early morning wake-up call. And then, after everyone had settled in for the night and all was quiet up on deck, I slipped up quietly for one last time to say “Goodnight Moon.”

“Extreme tameness…is common to all the terrestrial species…A gun is here superfluous; for with the muzzle I pushed a hawk off the branch of a tree.” ~ Charles Darwin