Ecuador is one of the few countries offering the option of independent travel with all the conveniences of an organized tour, serving up the best of both worlds. The “Wanderbus” is a hybrid solution for those of us who prefer flexibility and solitude of solo travel as opposed to feeling like cattle being herded through the masses, following the umbrella-waving tour guide while making all the mandatory carpet and jewelry shop stops. The infrastructure feels like “cheating off someone else’s homework” to visit all the highlights while letting someone else map out bus schedules, connections, and arduous hours of research that can otherwise wear a person down.

The Wanderbus circles the country in a clockwise direction, making all the stops at popular tourist destinations, allowing one to “hop on/hop off.” The bus offers several tour options depending on the route one wants to cover. Travelers of all ages from all countries can hitch a ride from city to city, or purchase the “Wanderpass” which covers the entire circuit. Hop off at your chosen city, stay a few days, and hop back on the next bus as it makes the loop. The pass is good for one year. 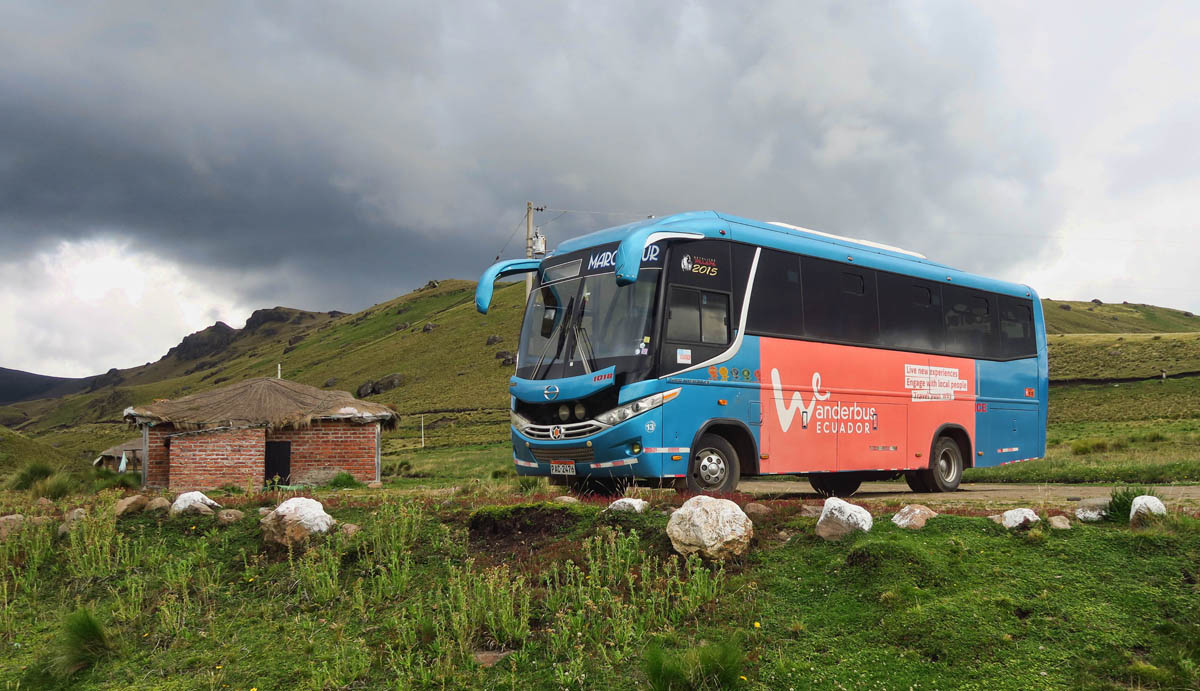 The Wanderbus is a safe and reliable option for the travelers loop around Ecuador. 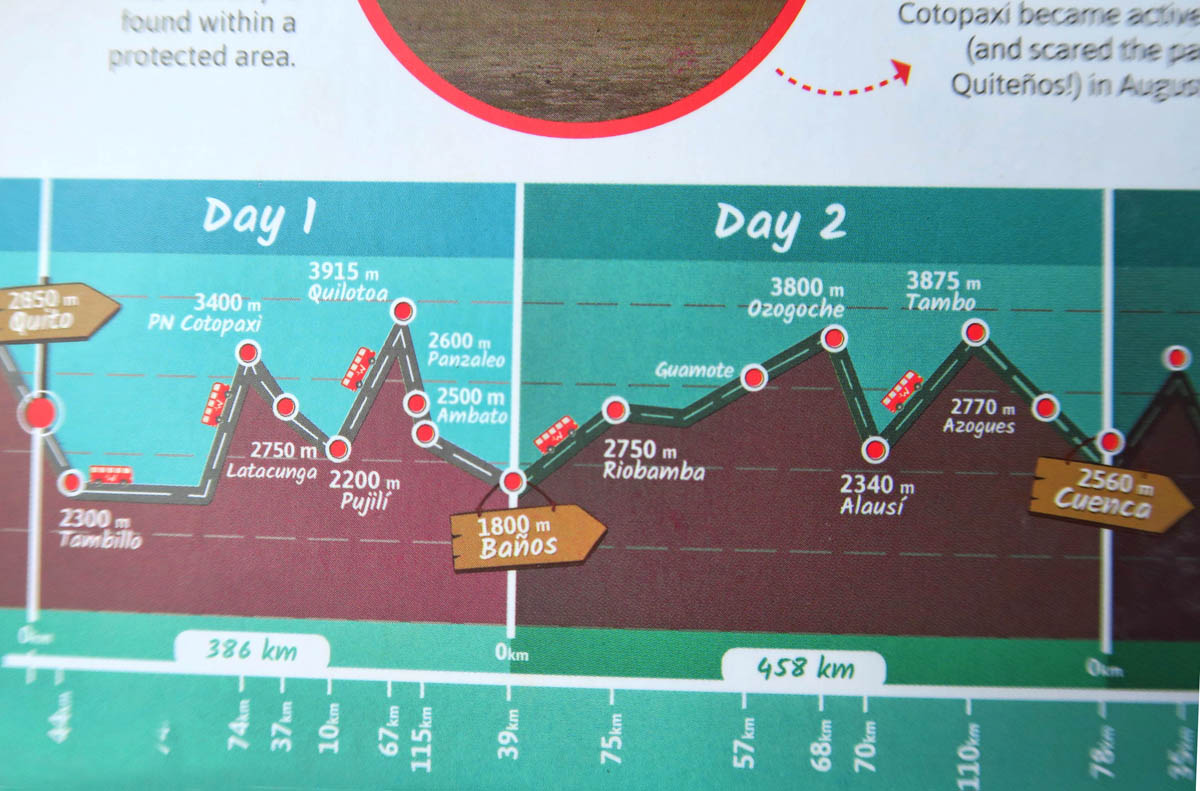 This seat-back card shows the elevation gain for the first two days of the trip. (Triple the number to convert meters to feet.) 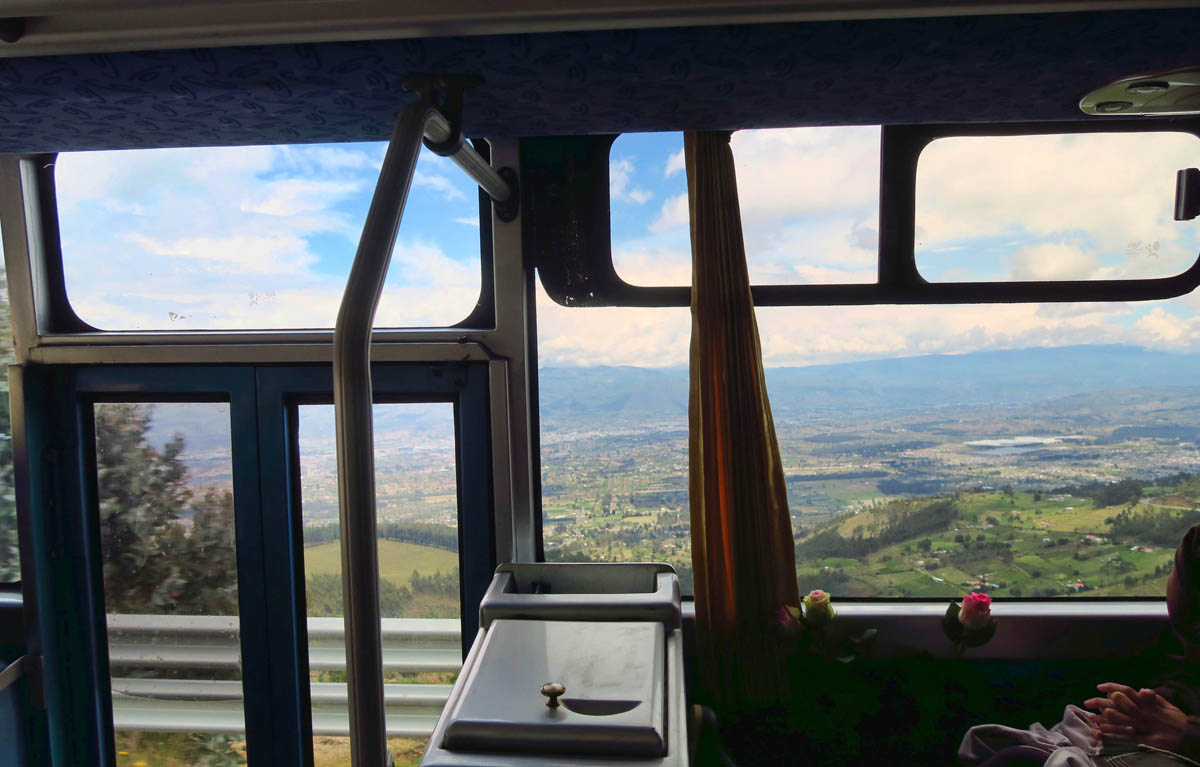 Looking out from my bus seat through lots of windows. Uncrowded buses afford beautiful vistas from both sides of the bus. 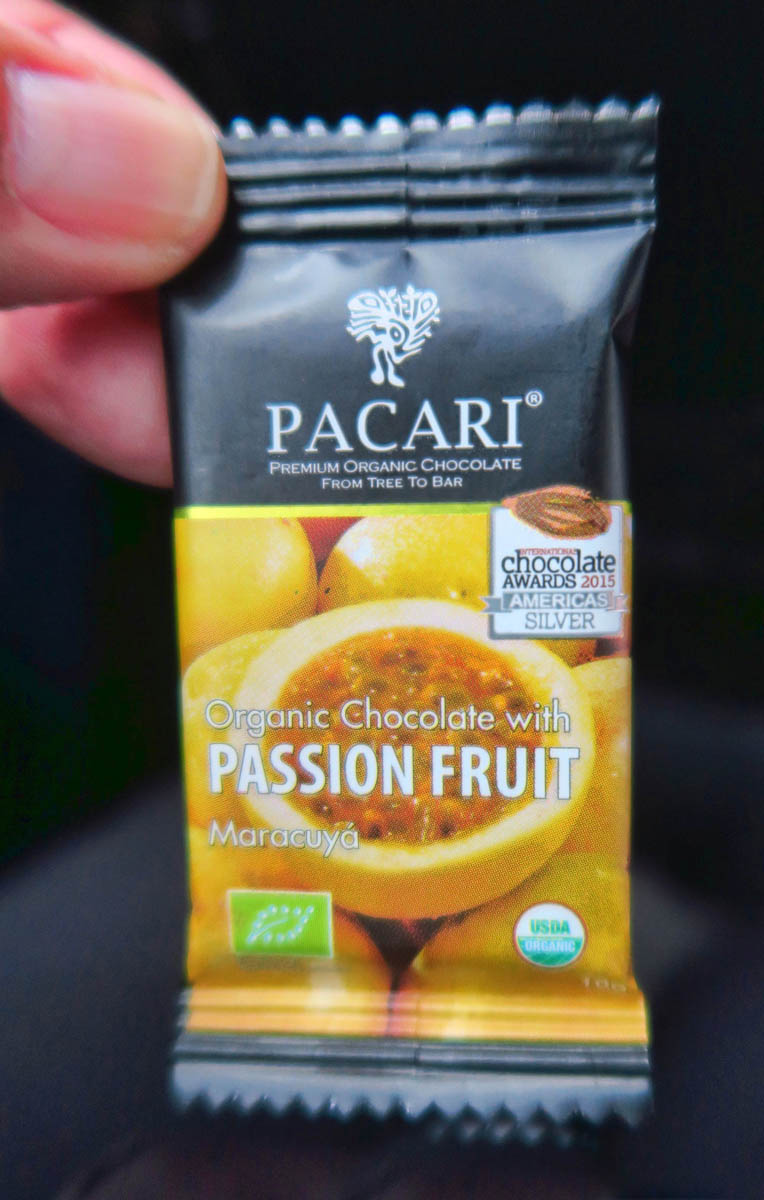 We have many opportunities to try local Ecuadorian products. The country is known for its dark chocolate production. 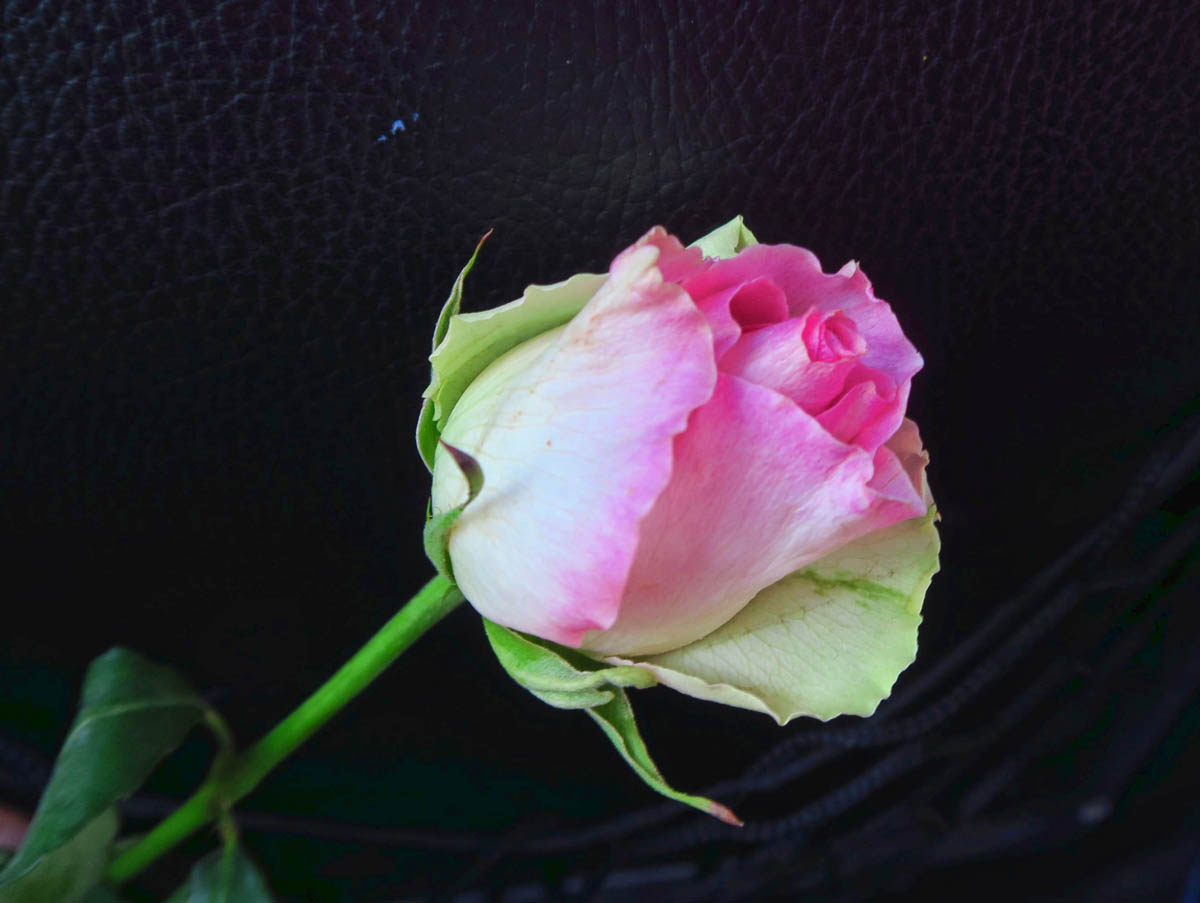 At one stop, our guide bought us all roses. This one lived for three days without water. Roses are the nation’s fifth-most exported product, behind cocoa, bananas, petroleum and shrimp. The equatorial sun aids in growing long, straight stems.

With my Galapagos experience now behind me and my Canon G7X now repaired, I hoped to see more of the country. Though I visited Ecuador back in the early 80’s while working for Braniff Airlines, I was only in Quito long enough to straddle the equator with a foot in each hemisphere. With no concrete plans on where I would go or how long I would stay, the Wanderbus seemed like a good option. Having only bought a one way ticket into Ecuador, I had the freedom to wander…..and what better way than the Wanderbus! 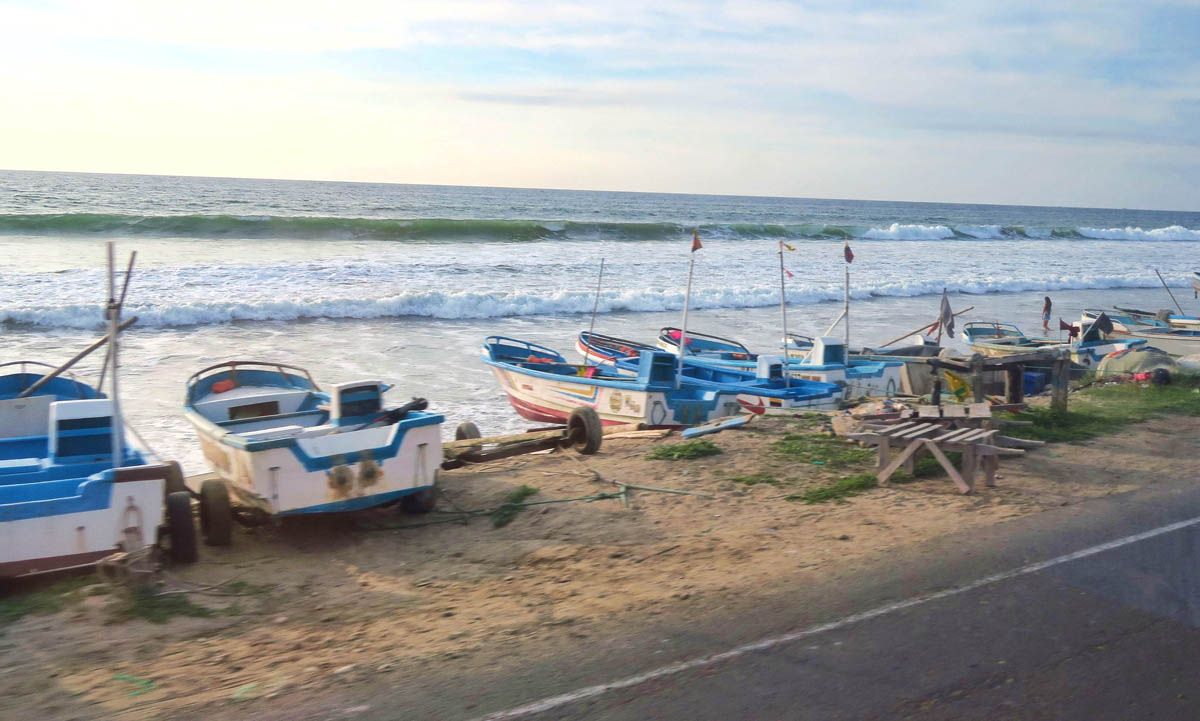 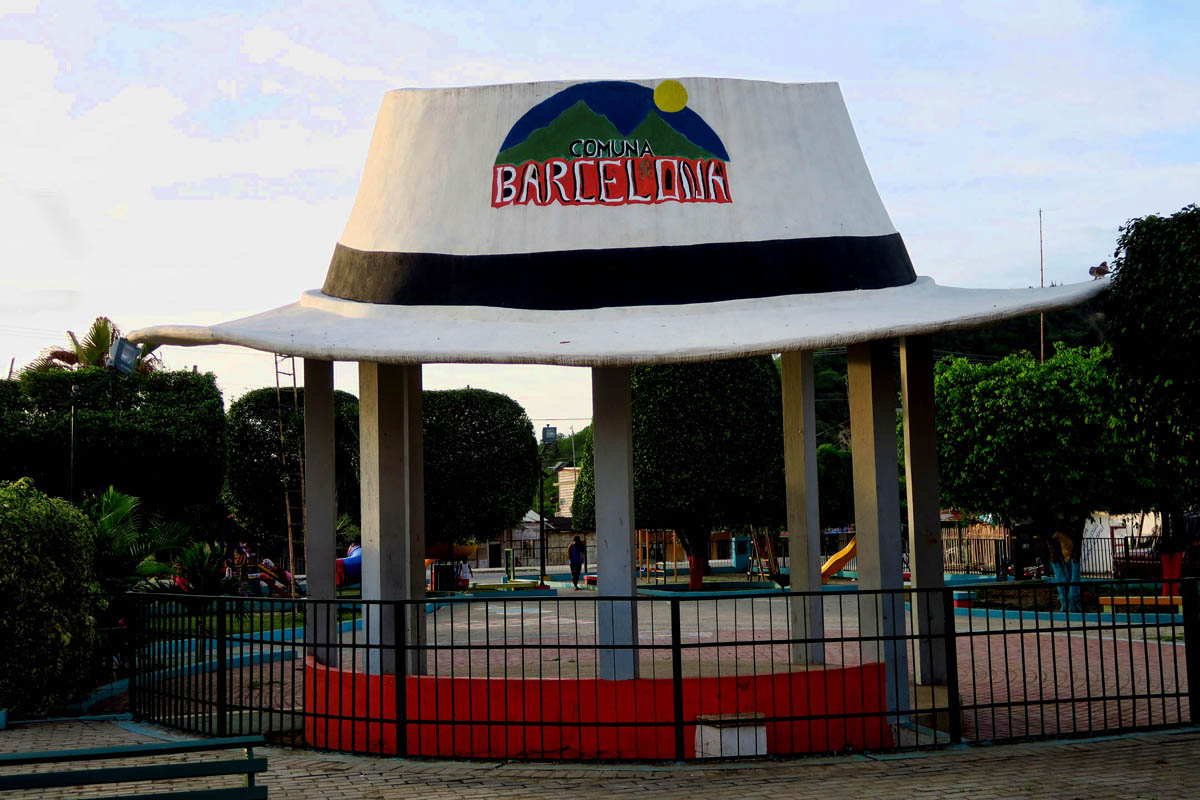 Our first “rest stop” is Ecuador’s version of Barcelona. This area is known for growing the toquilla palm used in making the “Panama” hat. Despite their name, Panama hats have never been made in Panama. The true name is the “Montecristi” which originated in Ecuador, where they are still made today. The hats earned their misnomer having been worn on the construction site of the Panama Canal. 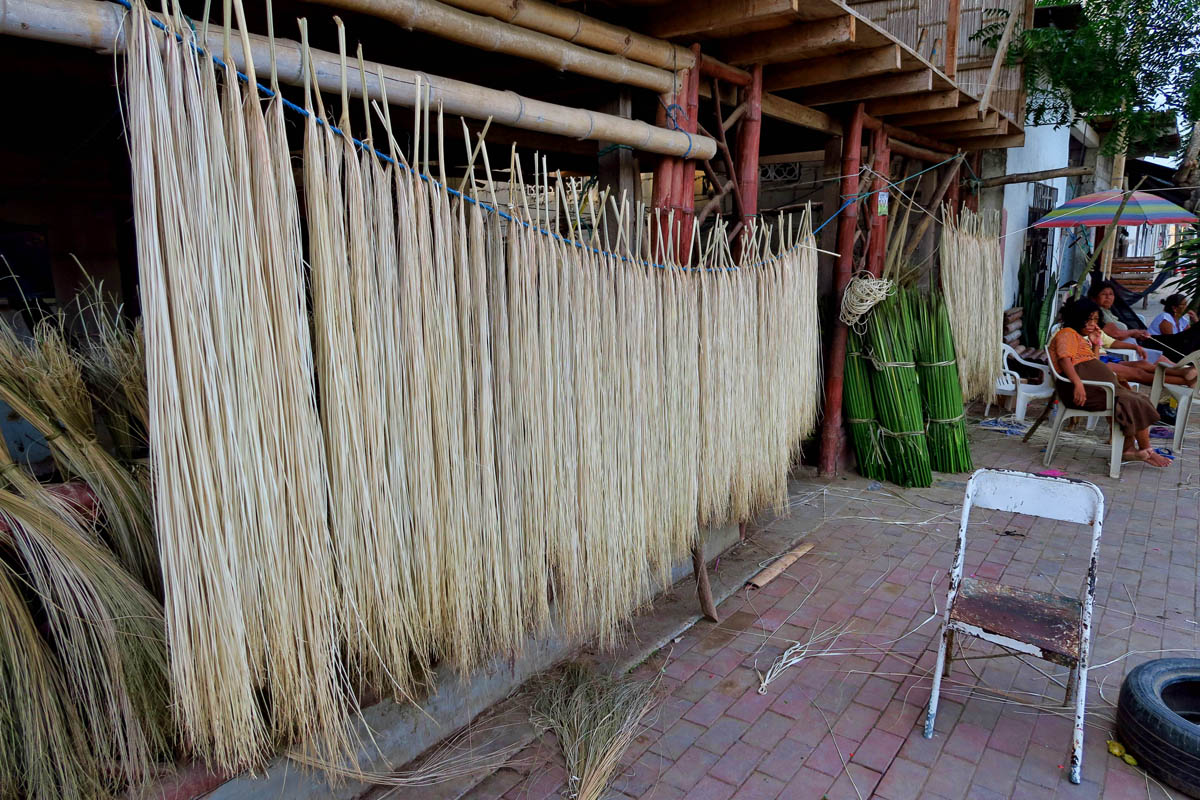 Shoots from the toquilla palm are beaten, boiled, then soaked in sulfur to lighten the color. The shoots roll up when dried, and are then hand woven into hats.

My initial impression was that at $197, the Wanderbus was a bit overpriced. That’s a lot of money for a bus ticket in a country where beer can be had for a buck. I could follow the same route and make all the same stops for half the price. But all it took was one local bus to convince me otherwise. Unlike Mexico with their efficient, streamlined first class bus system, buses in Ecuador are like the local “milk run,” stopping frequently to let passengers off, and picking up passengers waiting alongside the road. It matters not that the bus is full. Passengers will either stand in the aisles, or in the case of indigenous women, just sit in the laps of those fortunate enough to have snagged a seat! Wedged in a small seat, elbow to elbow between an aisle packed with swaying bodies, and windows covered with heavy fog, Ecuador’s high altitude winding mountainous roads can quickly turn a crowded local bus into feeling like a claustrophobic submarine ride. 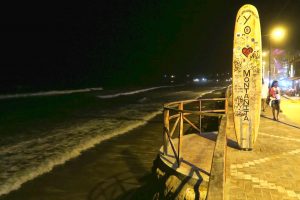 My first stop on the Wanderbus is the surf town of Montañita…not my kind of place, so I got back on the bus the next morning. 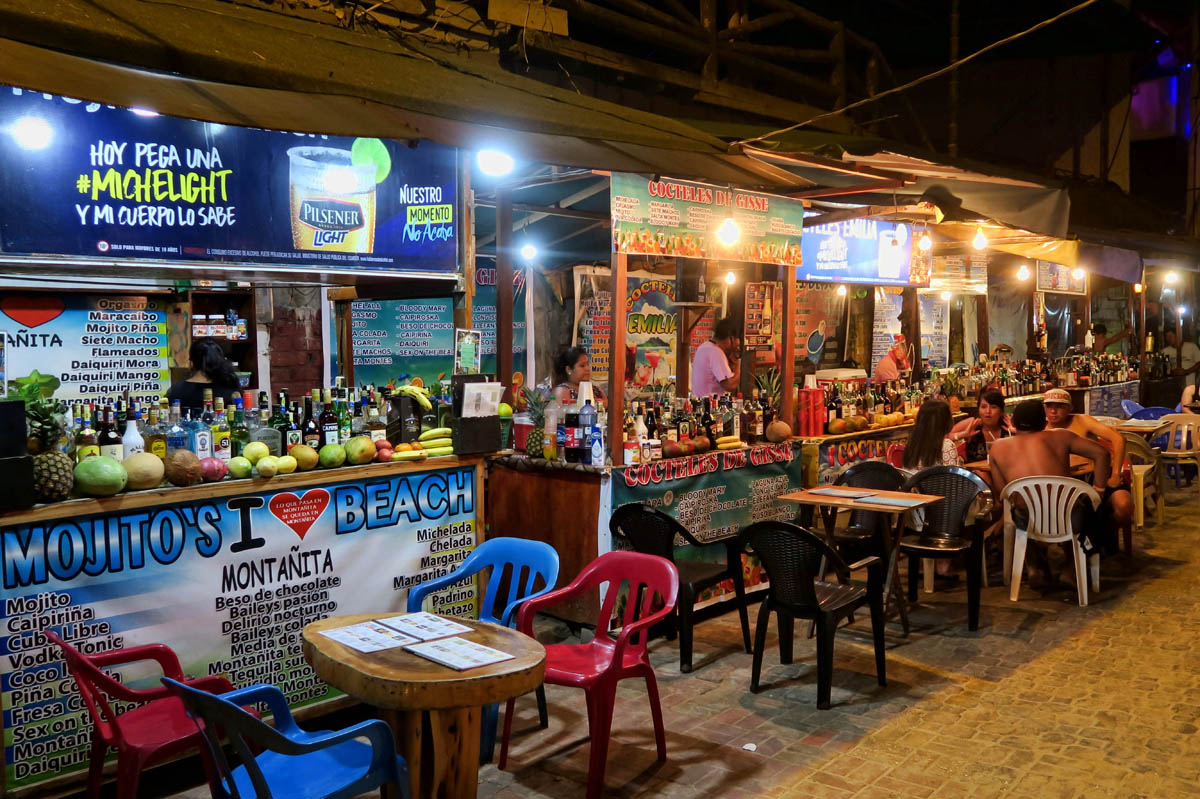 Montañita is a big party town. The pounding music continues on into the night. Instead of street food, all the kiosks sell cocktails. 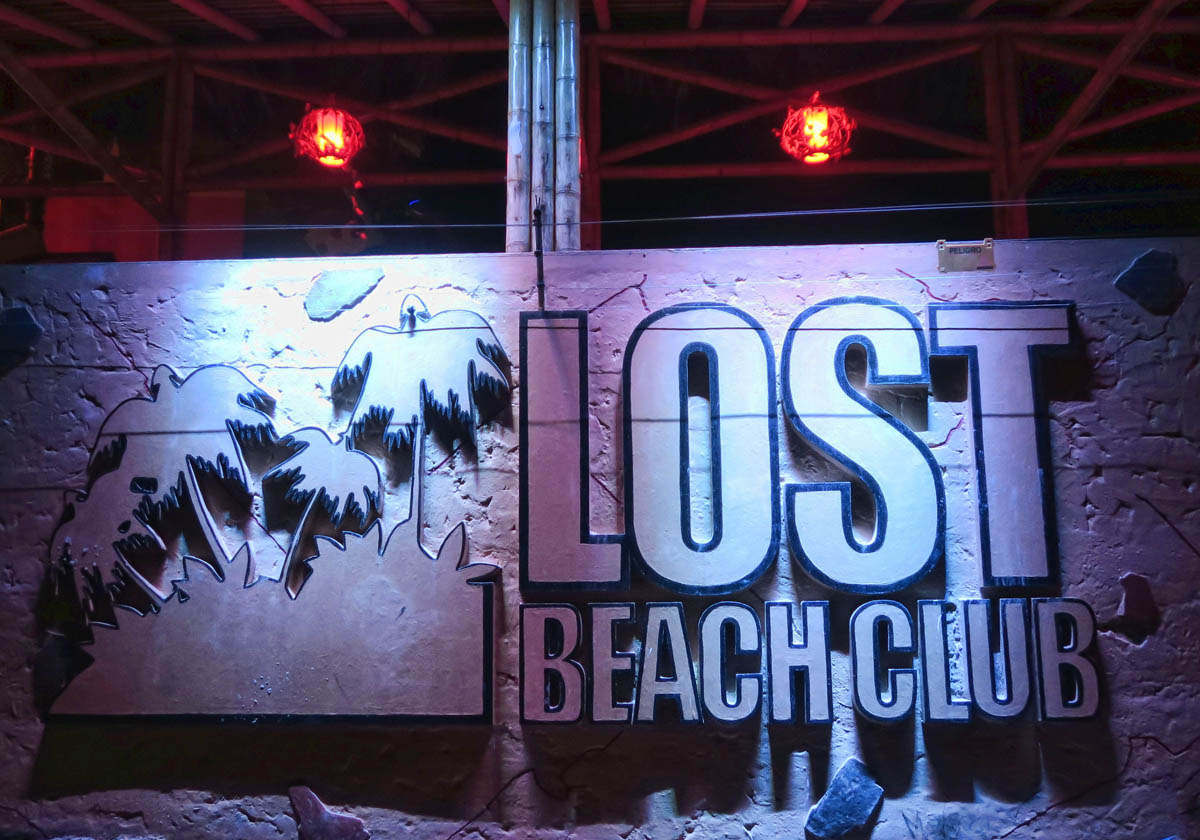 The Lost Beach Club is a famous concert venue and nightclub. They didn’t even open until 11pm! 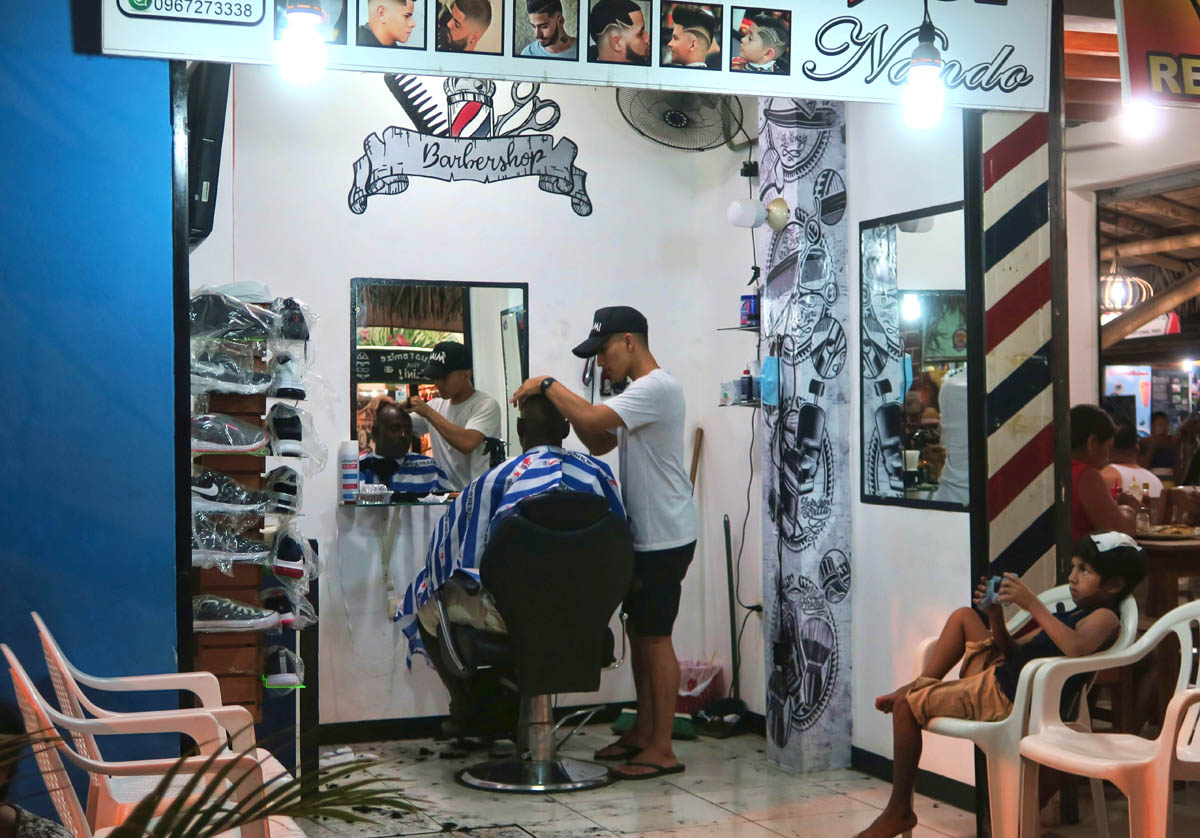 Lots going on in this little village! 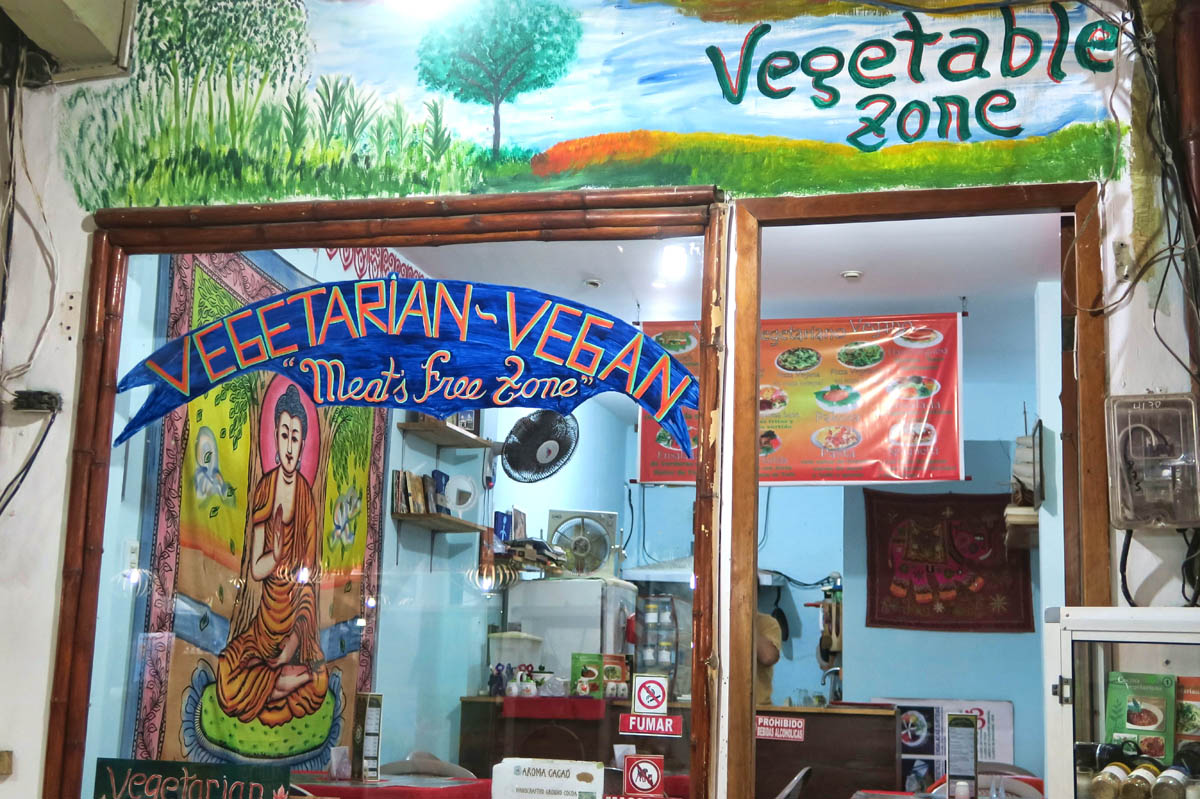 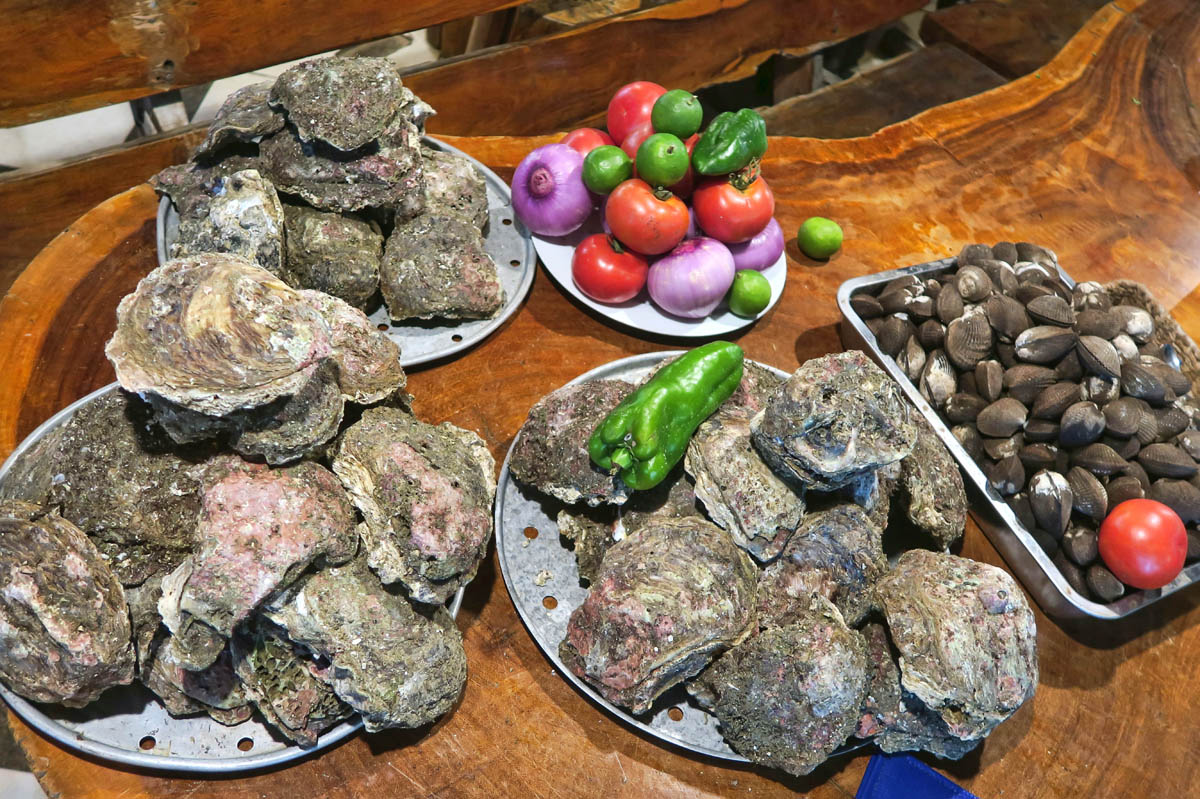 These oysters are massive. You can tell how big they are by comparing them to the full sized onions and tomatoes in the upper right.

What I would lose in exposure to the local culture by traveling in a bus full of foreign tourists, I would more than gain with the many rest stops along the way to visit local farms, businesses, and markets. Every leg of the trip included at least two stops organized to patronize local businesses. Breakfast at a local dairy farm, a cooking class at a beach-side fishing village, a tour to see Monticristo hats being made, (don’t call them Panama hats!) helped break up the long driving days. Each route was staffed by a young guide, fluent in both English and Spanish, narrating the trip with tips, trivia, and even a supply of snacks along the way. 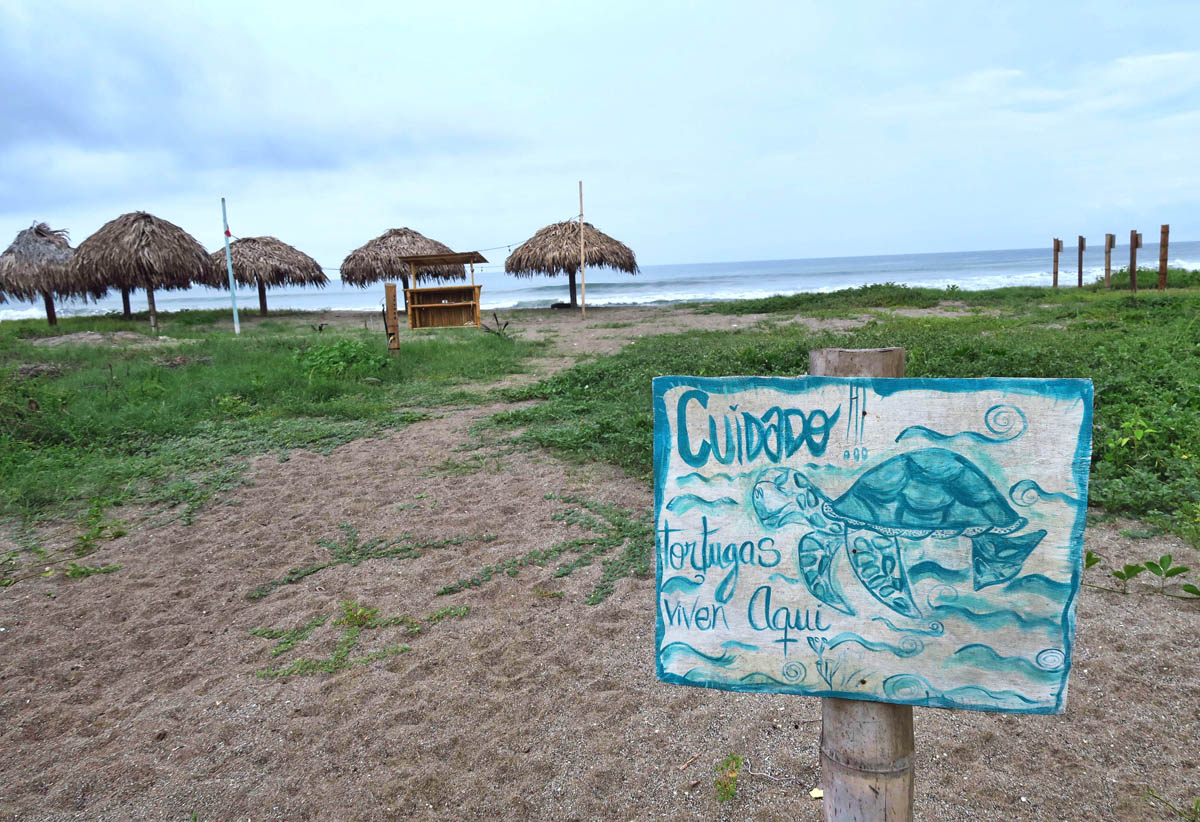 The next morning, we travel on up the coast, with a stop at Puerto Cayo, northern border with Machalilla National Park. 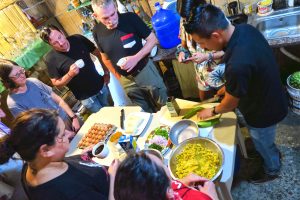 Here, we have a cooking demonstration, followed by a traditional breakfast of “tigrillo,” mashed green plantains sauteed with onion and pepper, served with cheese. 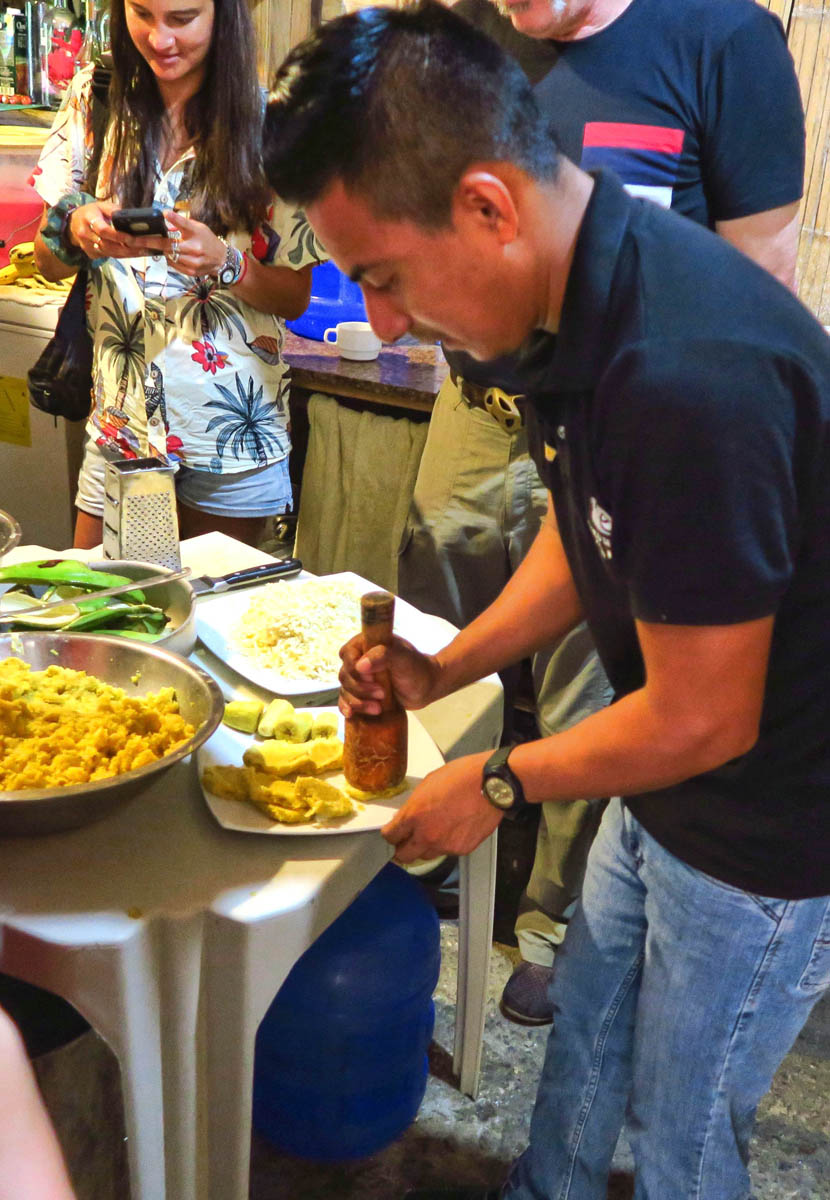 Here, our chef is demonstrating how to make “platones,” flattened slices of plantains, deep fried.

I appreciated the feeling of added security during my Wanderbus journey. When we would stop at a destination, the driver would either stay on board with the bus, or doors would be locked. Unlike local buses that are constantly having the cargo doors opened, I never felt like my belongings were at risk. Still feeling on edge following the theft back in Quito, it was an added bonus to be able to relax and enjoy the ride without constantly having to keep an eye on my luggage. 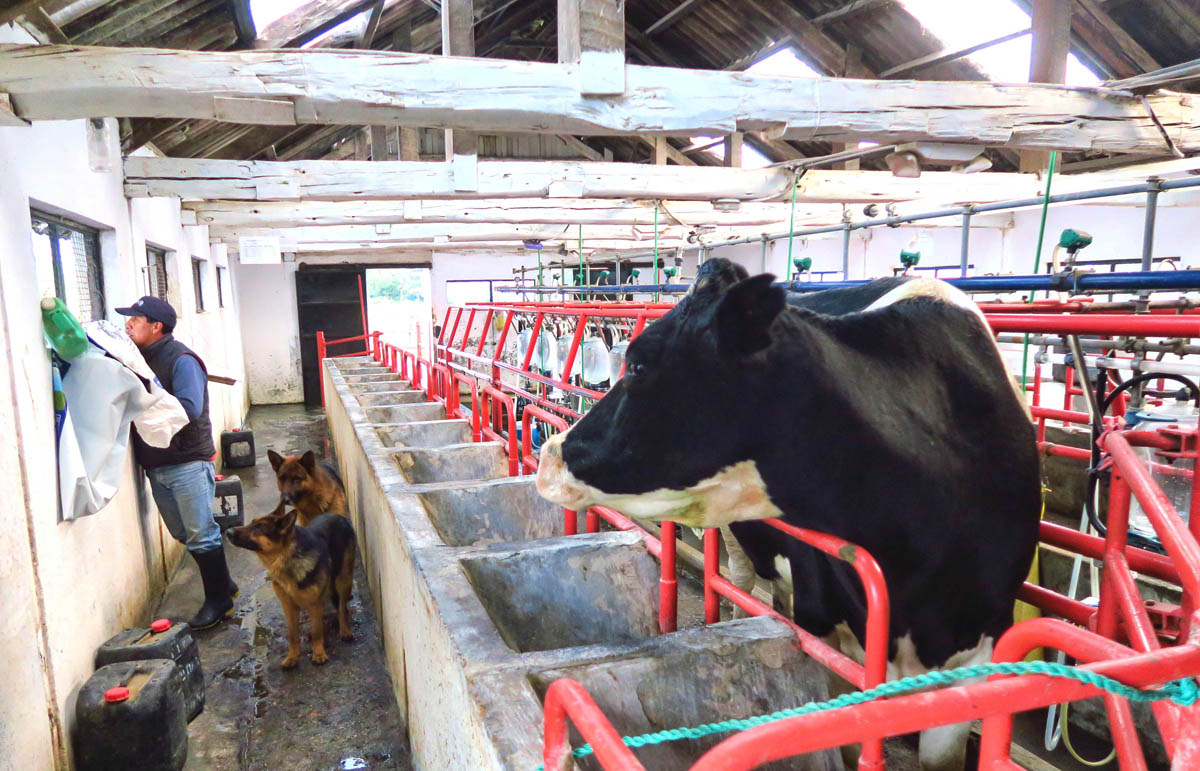 Another breakfast spot at a local dairy farm. Travelers were given the opportunity to milk the cow. I passed. 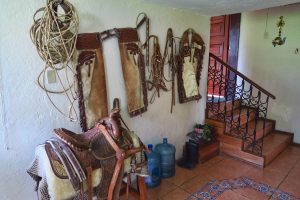 Breakfast was served at the dairy farm in a beautiful hacienda. 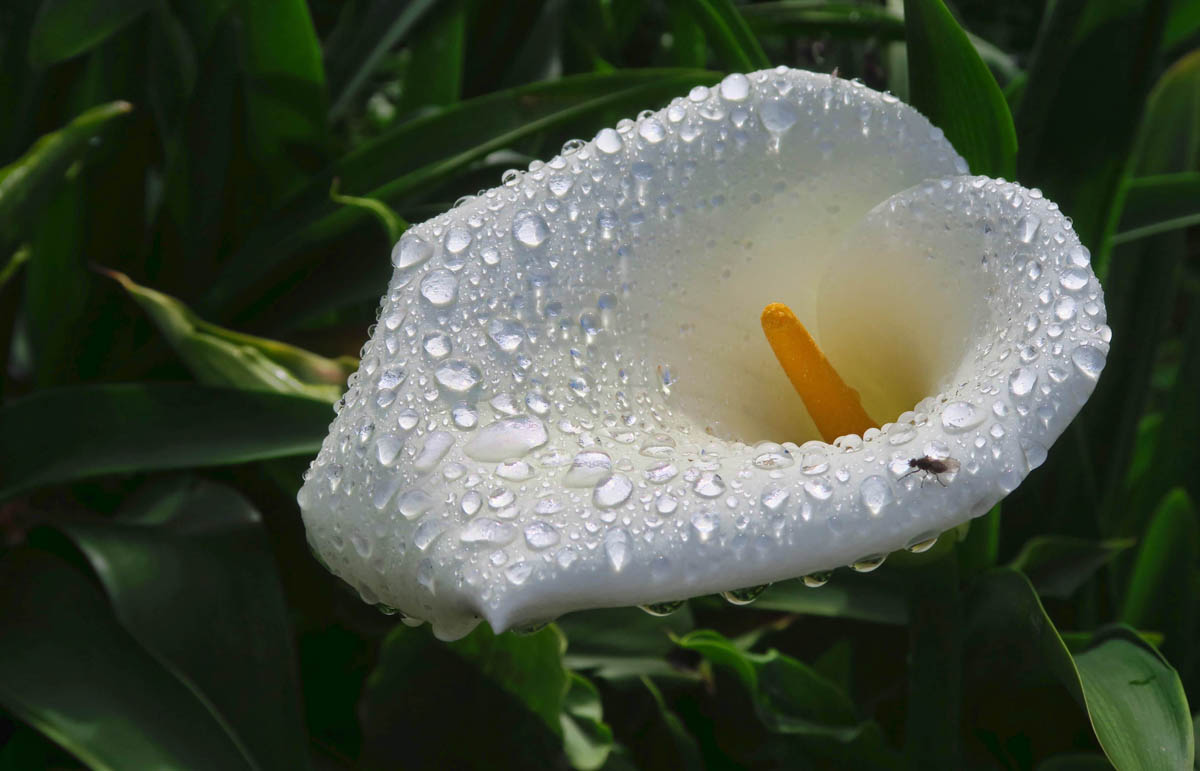 Gardens outside the dairy farm.

Wanderbus is not the perfect solution. The buses only make the circuit every other day, so if one hops off in a certain destination, they will need to commit to two overnights while waiting for the next bus to come along. The buses don’t travel at all on Sunday, so a stop over the weekend could necessitate three nights in that destination. And the buses don’t travel at night, so there are mandatory stops at the end of the day regardless of whether one has plans to visit. Of course, one can always resort to public transportation should the Wanderbus schedule not work out. This was my only option on one leg of my journey. All it took was one local bus ride to convince me that Wanderbus was well worth the wait!

Here are a few road scenes taken from my Wanderbus Window: 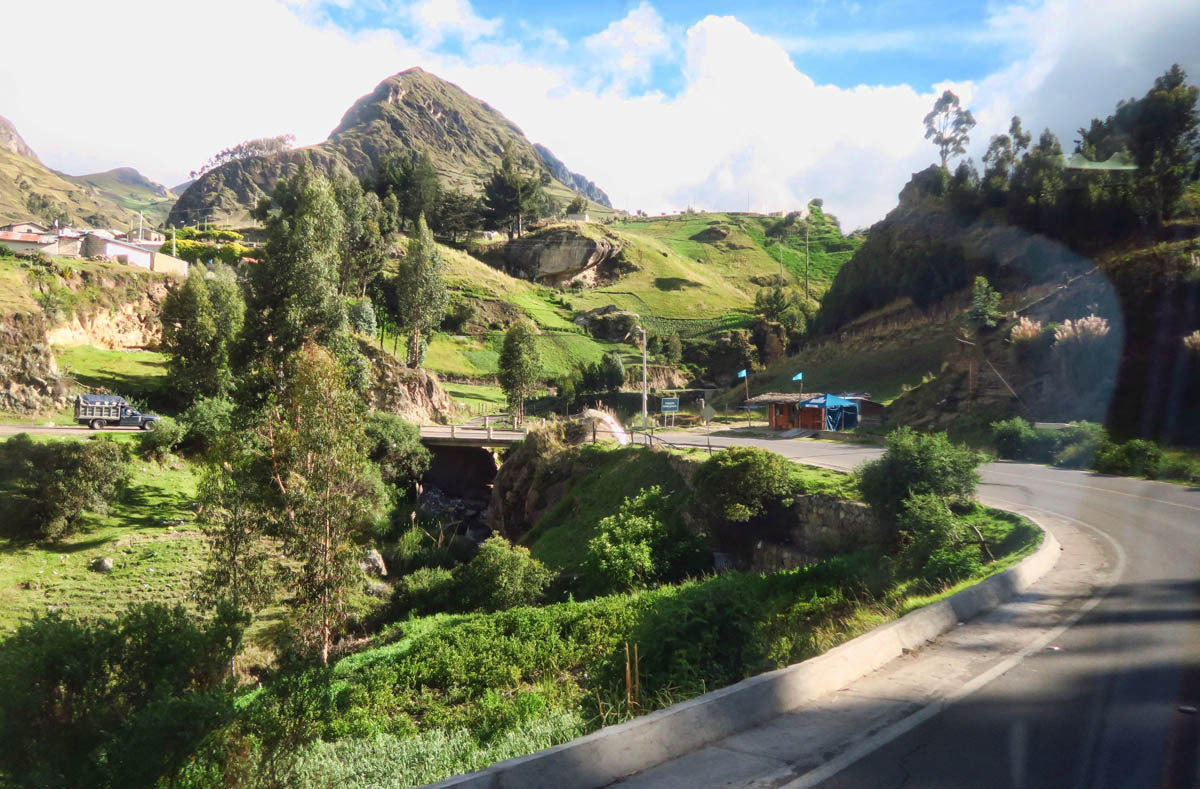 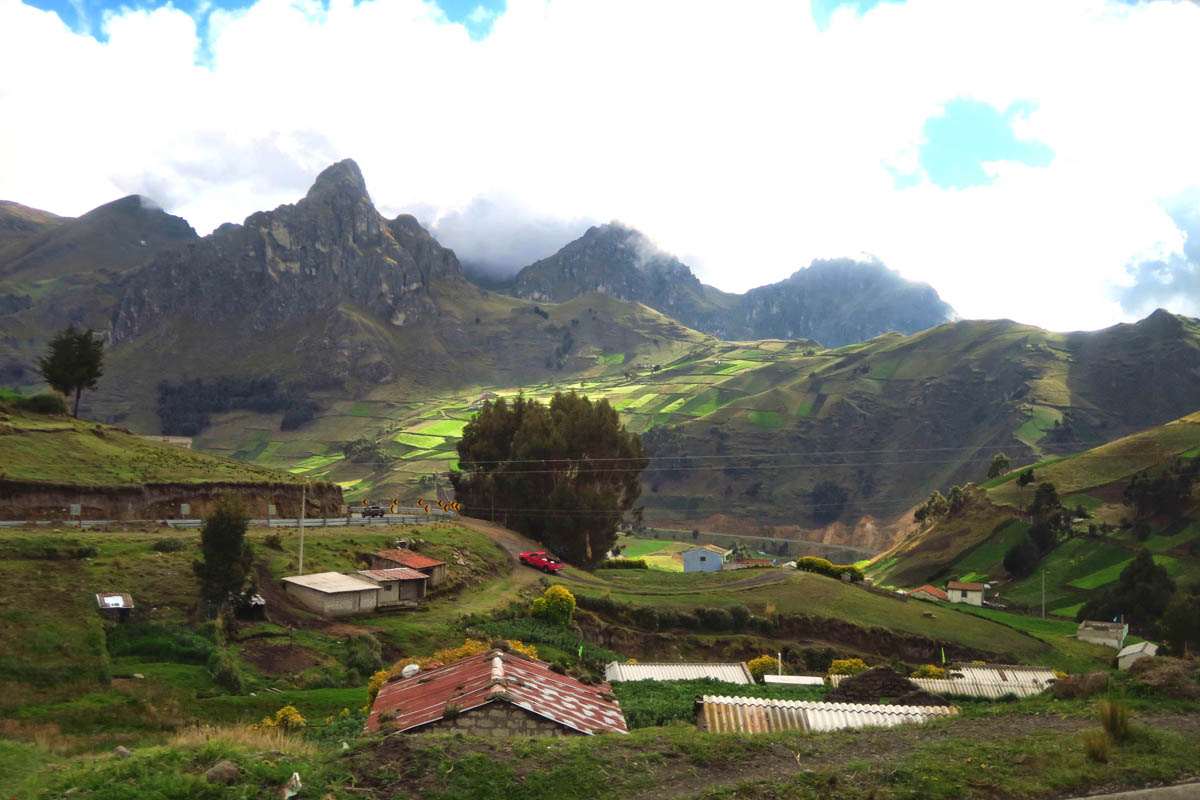 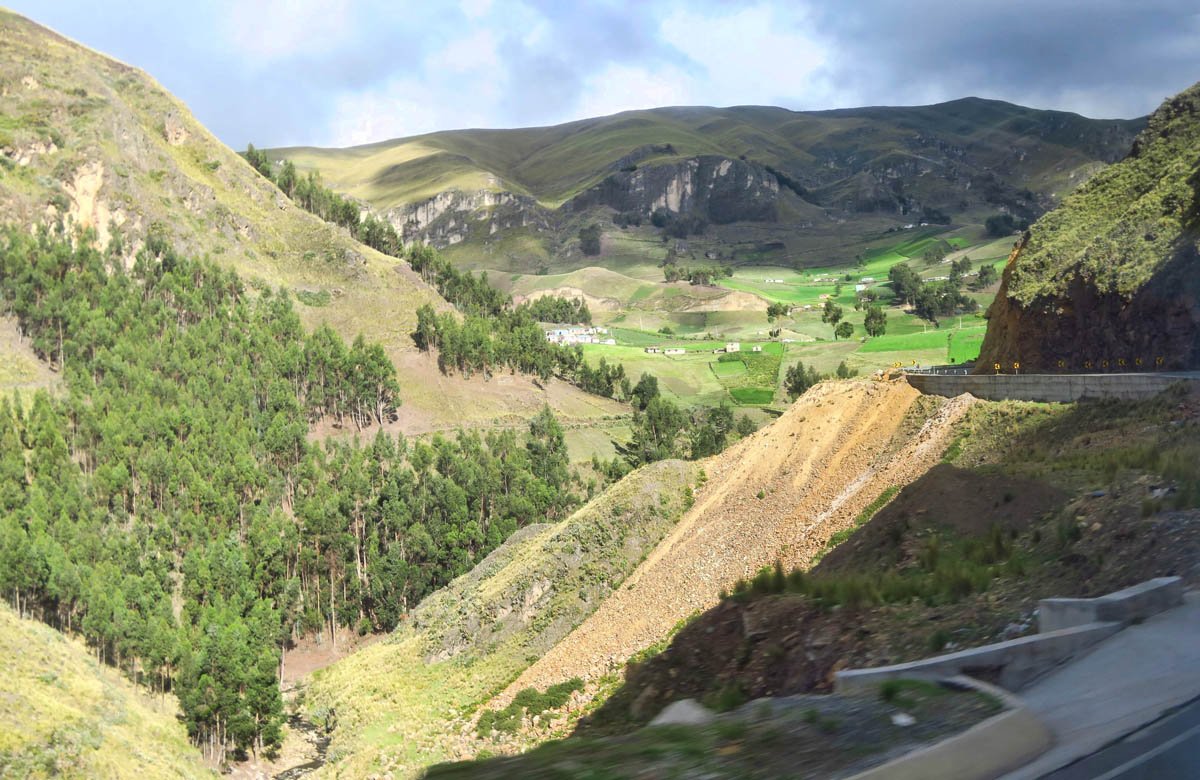 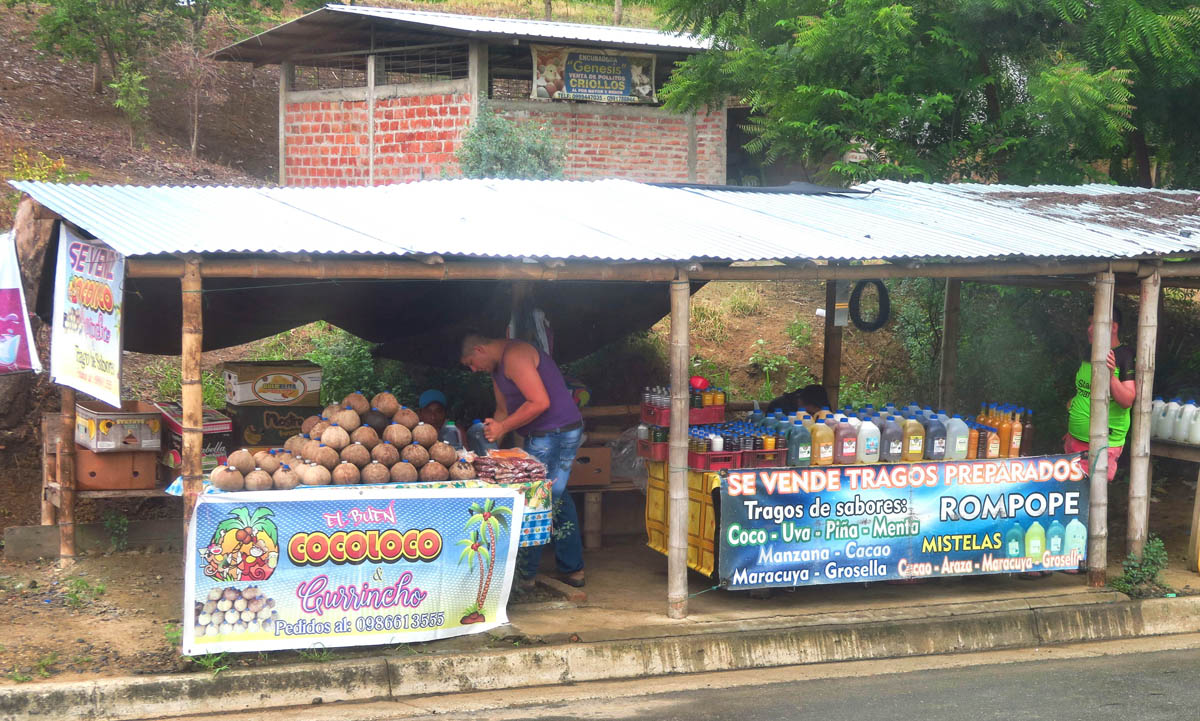 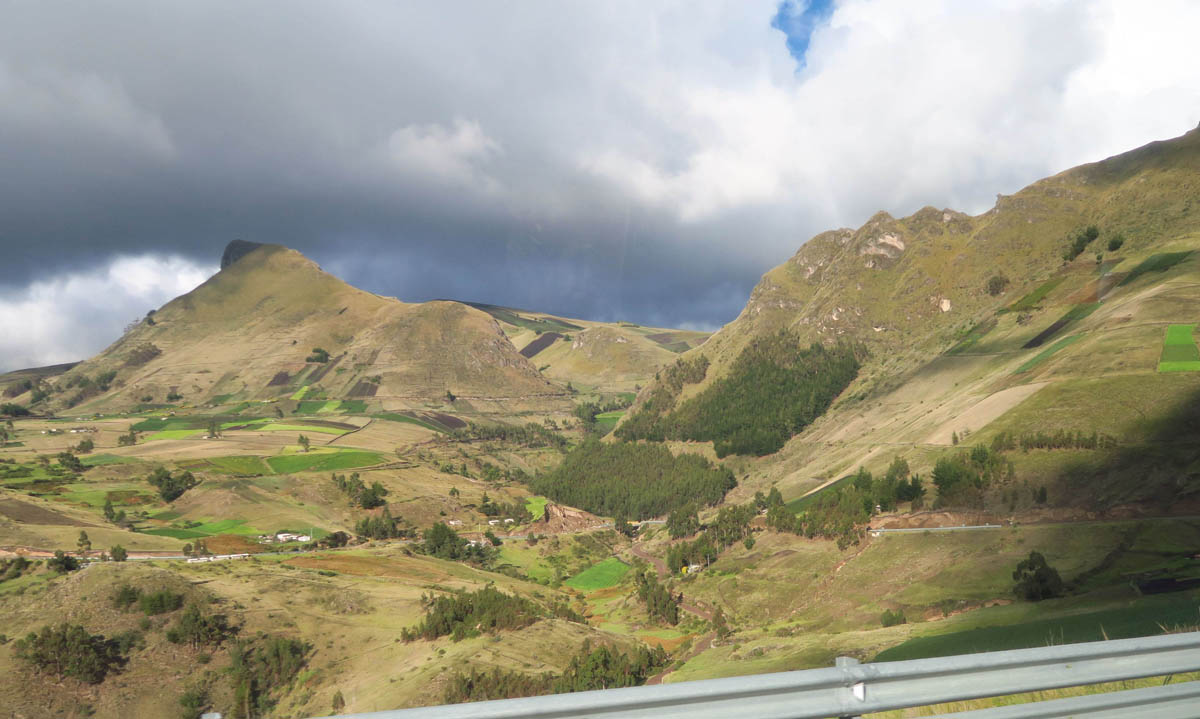 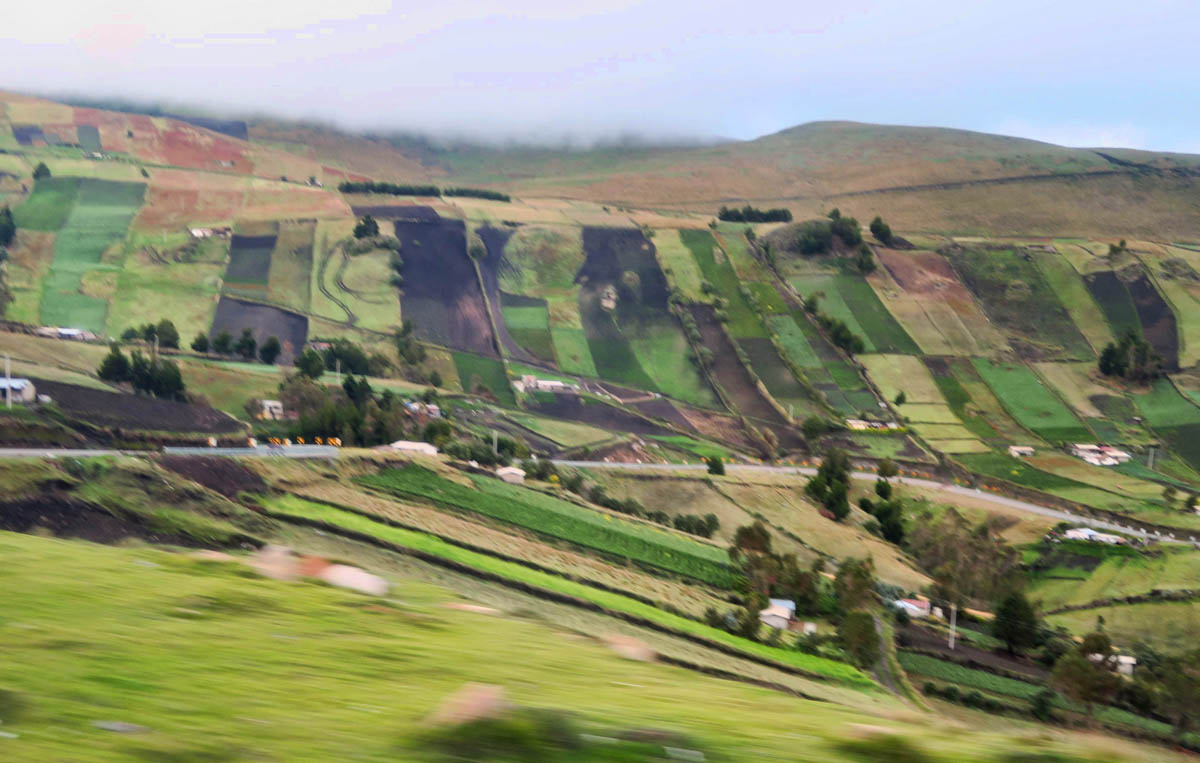 16 thoughts on “Wandering Ecuador on the Wanderbus”