The Wanderbus is not just a mode of transportation looping around Ecuador. There are times when the bus veers off the main route, in this case the Pan-American Highway, and acts as a tour bus while our English speaking guide provides commentary on a destination. Cotopaxi National Park is one example of this guided excursion off the main road.

Reaching Cotopaxi National Park without a car is very challenging. There is no public transportation into the park, leaving the only other alternative to rent a car, something I am not quite brave enough to do outside my own country. Otherwise, the only access to the park from the nearest town is by taxi to the tune of $25 to $30 one way. Taxis are cheap in Ecuador, so that gives you an idea of how far it is from town into the national park. After many hours of research, I had all but given up on being able to visit the park on my own, so to find out we would be entering the park for a tour, along with a stop to do some hiking came as great news! 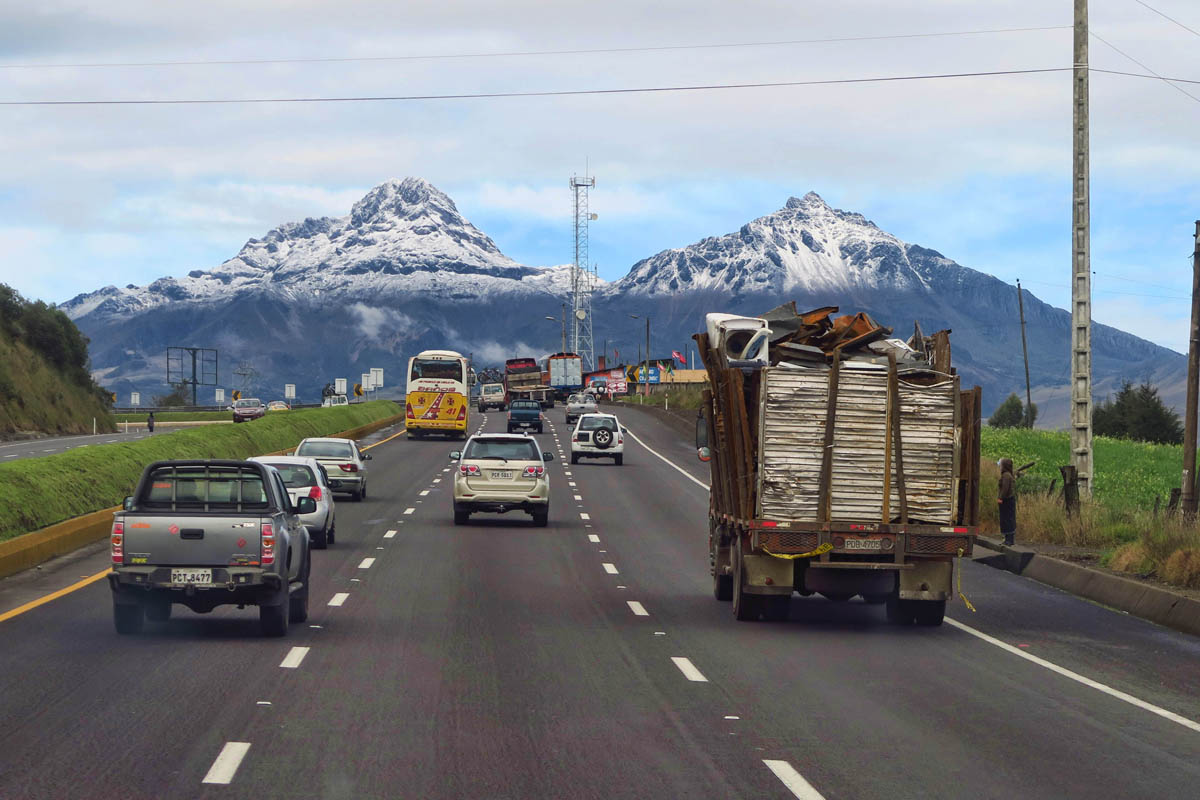 The Illinizas, Ecuador’s twin peaks as seen from the Pan American Highway. 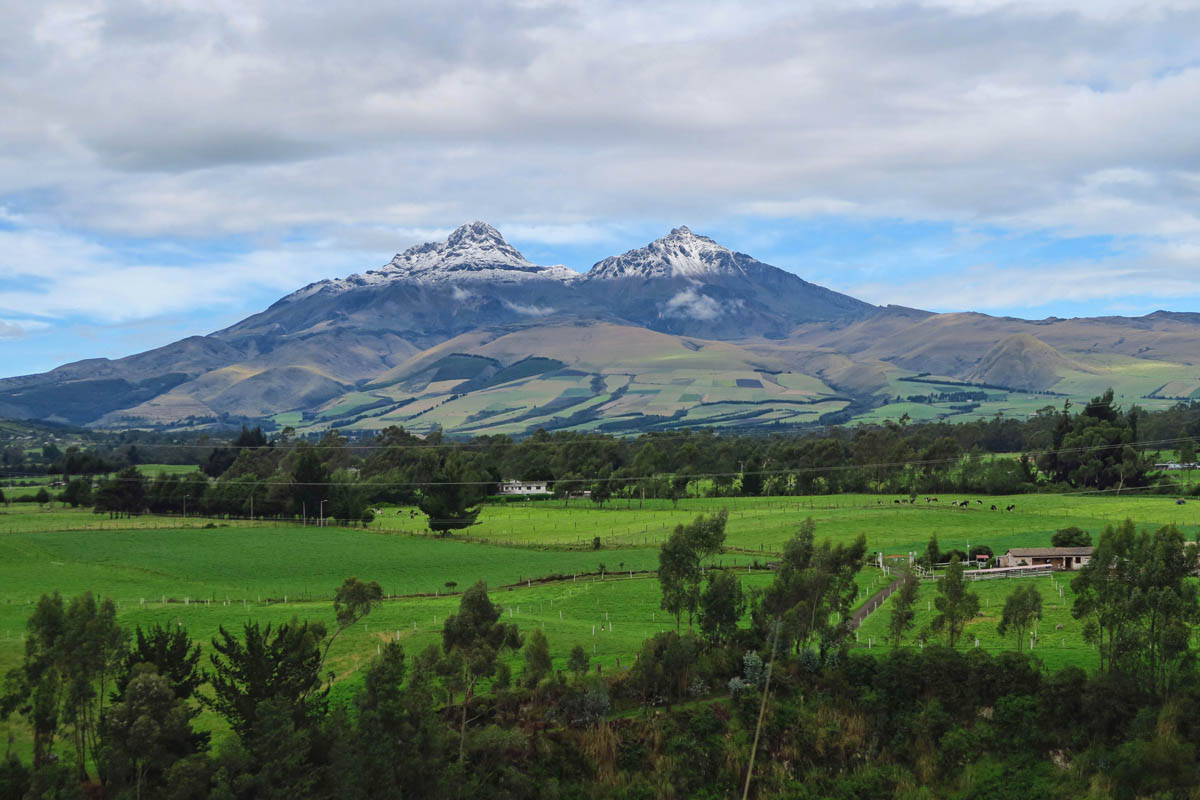 The Illiniza peaks are among the highest in Ecuador, with Illiniza Sur standing at 17,217ft, and Illiniza Norte at 16,817 ft. 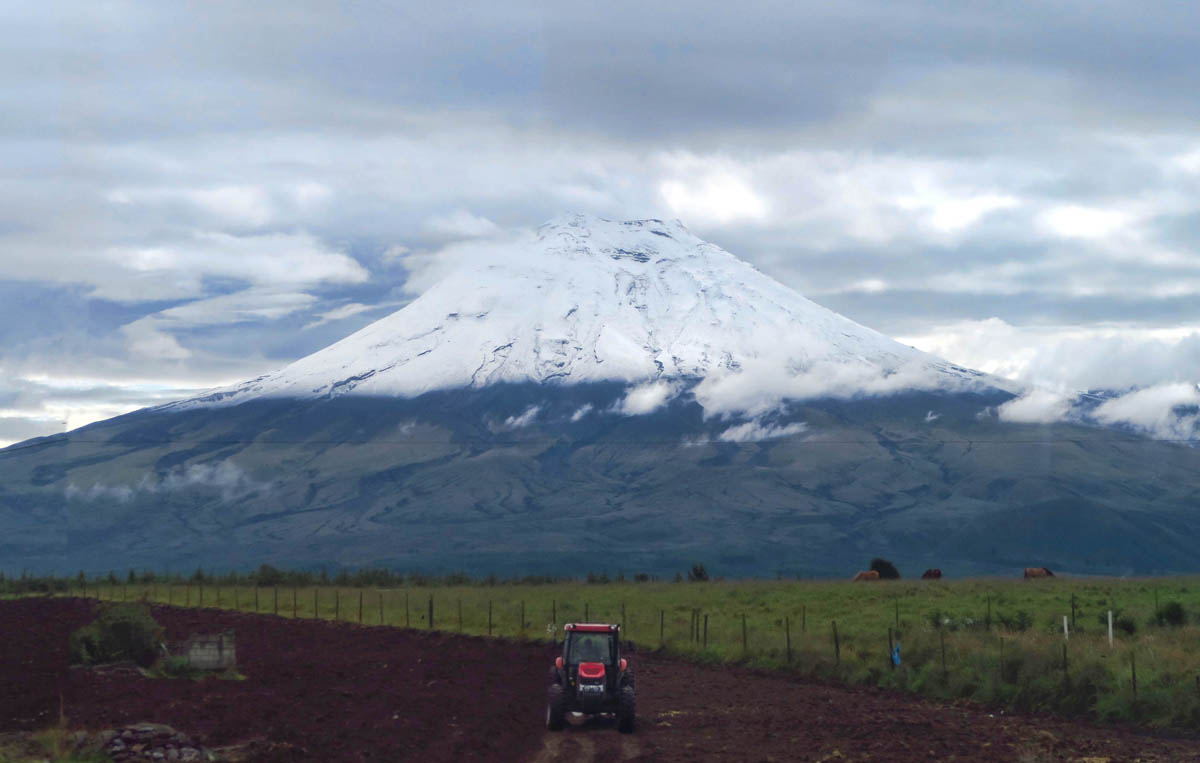 First glimpse of Cotopaxi Volcano, taken from the Wanderbus window. The name Cotopaxi means ‘Neck of the Moon’ in Quechua as once a year the moon passes over the cusp of the volcano. 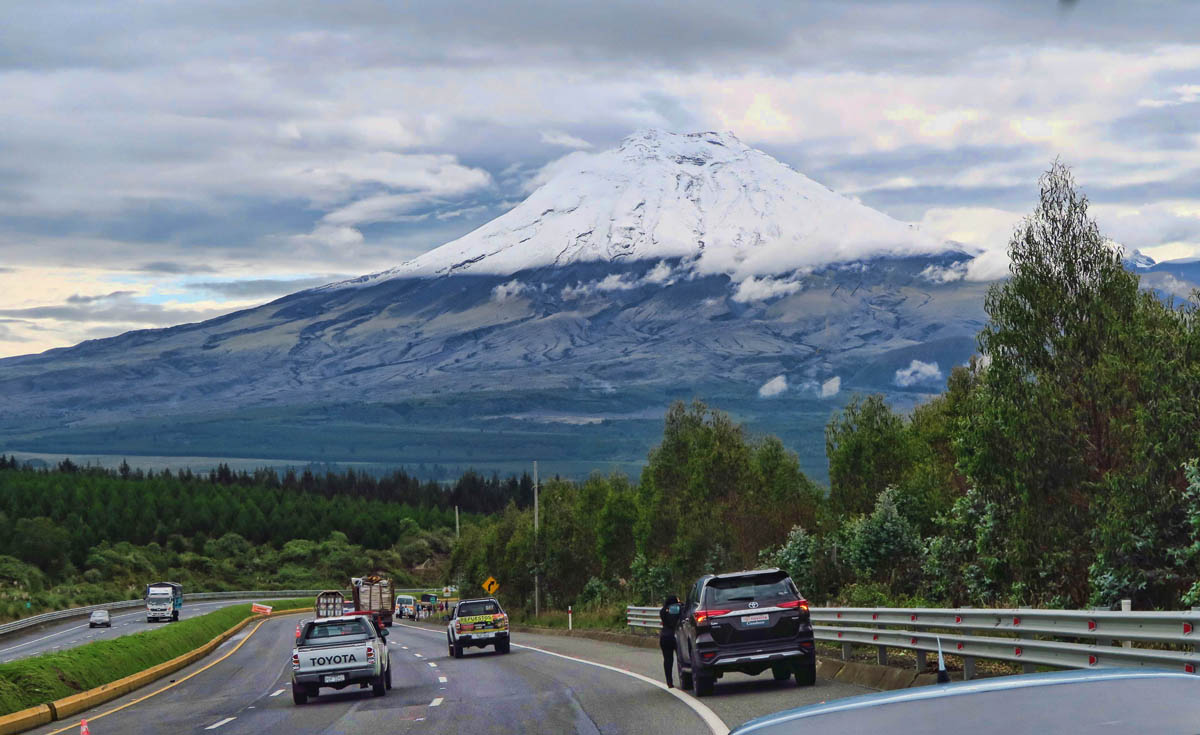 Our driver pulls over to the side of the highway so we don’t miss this elusive view of this 19,347 ft Ecuadorian icon.

The small country of Ecuador is home to 84 volcanoes. My brother Don loves volcanoes. Driving down the highway in the Wanderbus, I send a note back to him with the subject line, “Volcanoes, Volcanoes everywhere!” The country sits right along the “Ring of Fire,” a major area in the basin of the Pacific Ocean where more than 75% of the world’s volcanoes are located. At 19,347 ft, Cotopaxi is not the highest of Ecuador’s volcanoes. That title belongs to Chimborazo at 20,560 ft, which due to the equatorial bulge of the planet, is the closest place on earth to the sun.

However, Cotopaxi is likely Ecuador’s most famous volcano for two reasons. One, it’s still active. The last major explosion was in 1905, with activity as recent as 2015, which sputtered ash and closed the climbing trails for weeks. 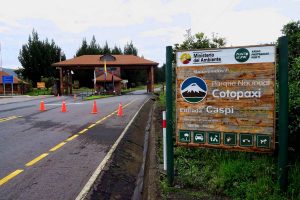 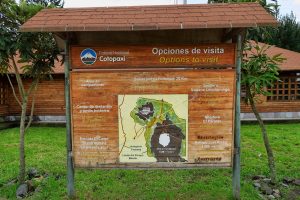 Almost 20% of Ecuador is protected as national parks. 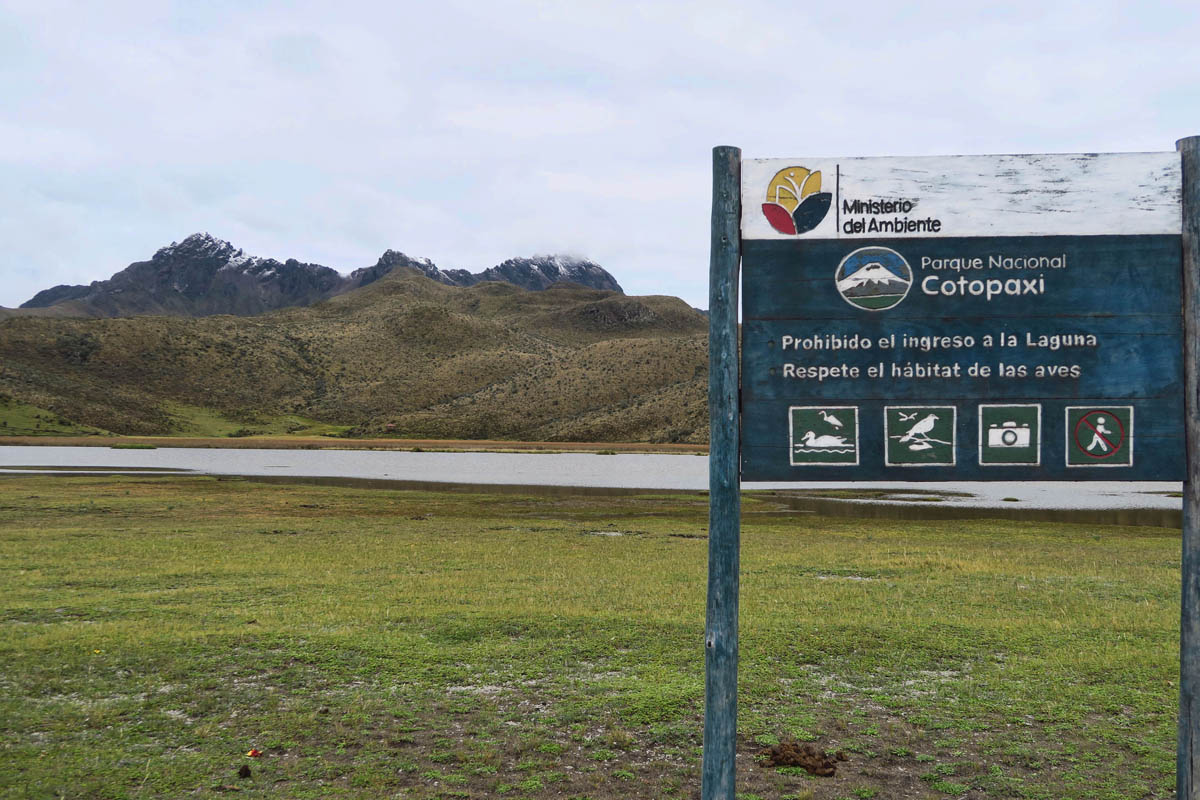 The trail head for the hiking trail around Limpiopungo Lake. 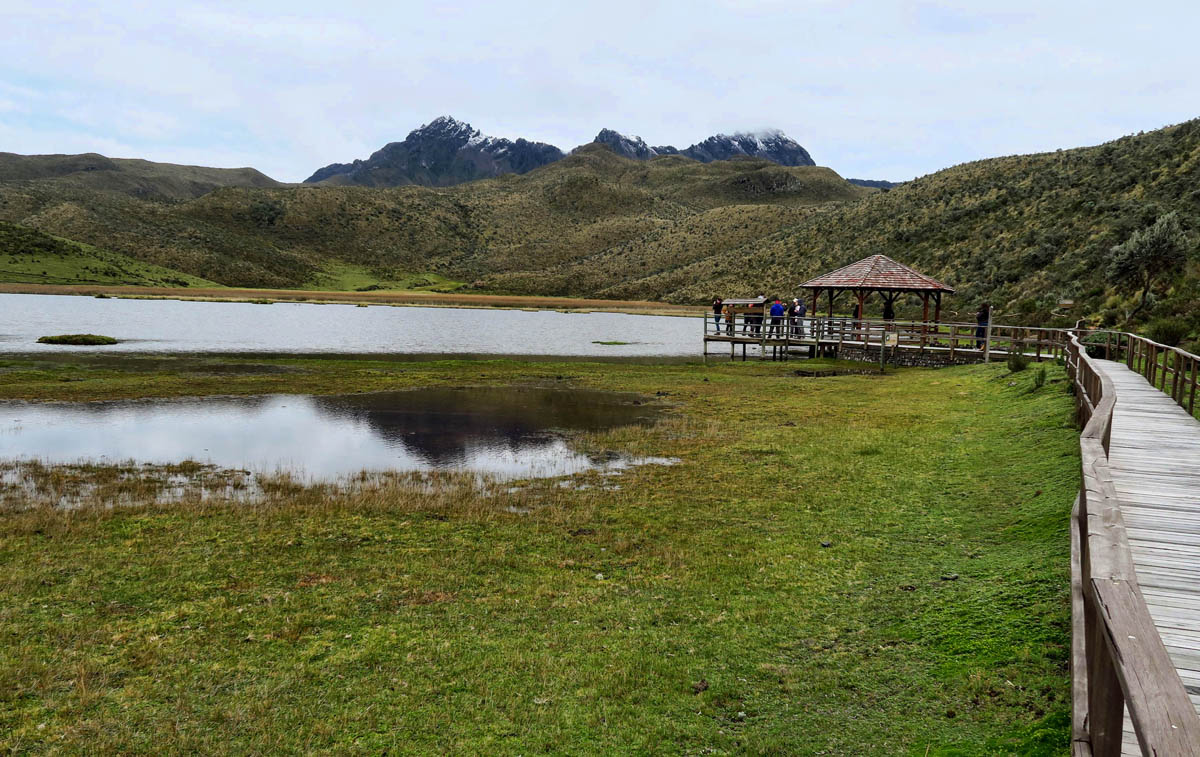 Although the jagged peaks behind don’t appear to be very high, this is actually Rumiñahui Volcano at 15,607 ft. 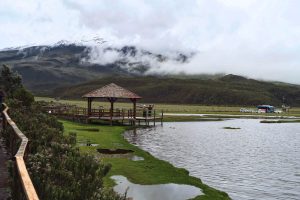 Hard to see on this gray day, but the clouds do part to see most of Cotopaxi during our hike.

The second reason Cotopaxi is so well known is for its accessibility of climbing routes. While the climb is not considered “technical,” it does require the use of a harness, ropes, ice axes and crampons. Sounds pretty technical to me…

Our planned destination inside Cotopaxi National Park is Limpiopungo Lake, known to be one of the best places for viewing the Volcan Cotopaxi. However, our driver doesn’t leave this highly sought out view to chance. It’s a known fact that the later in the day, the less chance of seeing the elusive volcano through the cloud cover. So on the way to the park entrance when the clouds part, the driver literally pulls over on the Pan American Highway so we can all pile off the bus to grab a few photos. 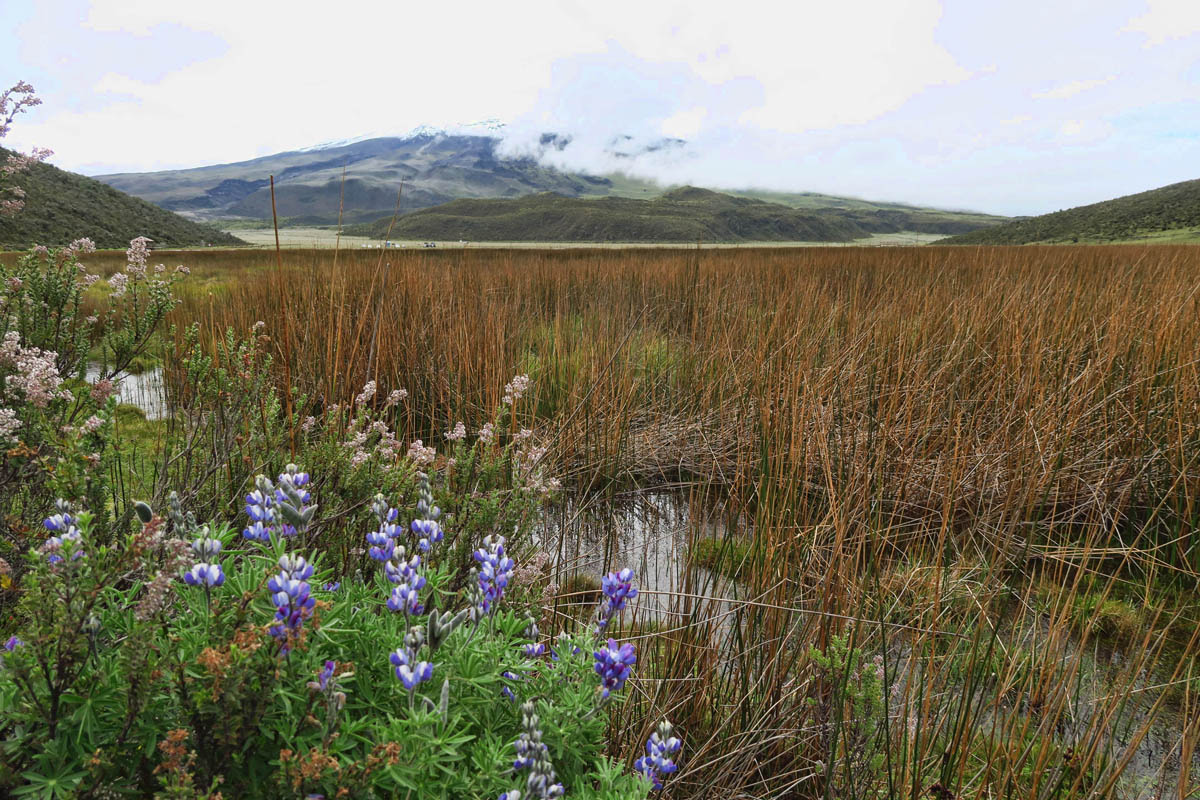 There are a few wildflowers along the trail. These are likely some version of lupine, though they remind me of Tx bluebonnets. 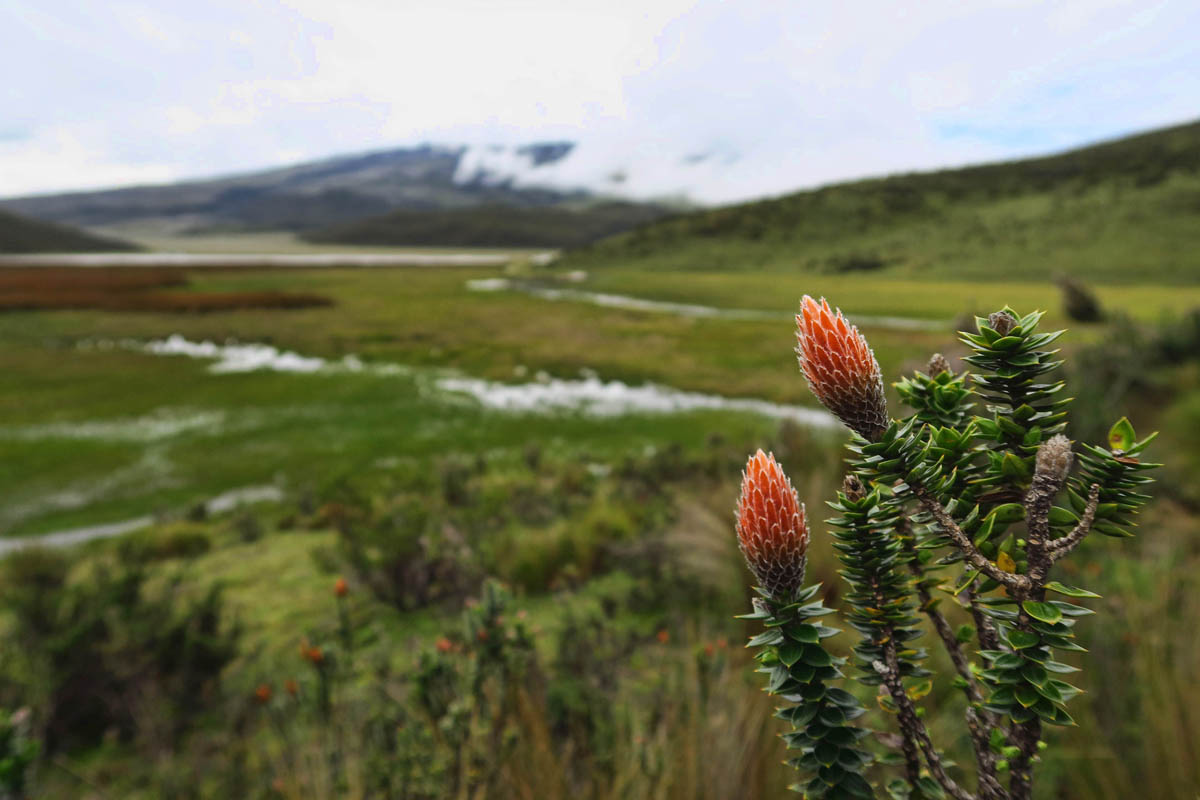 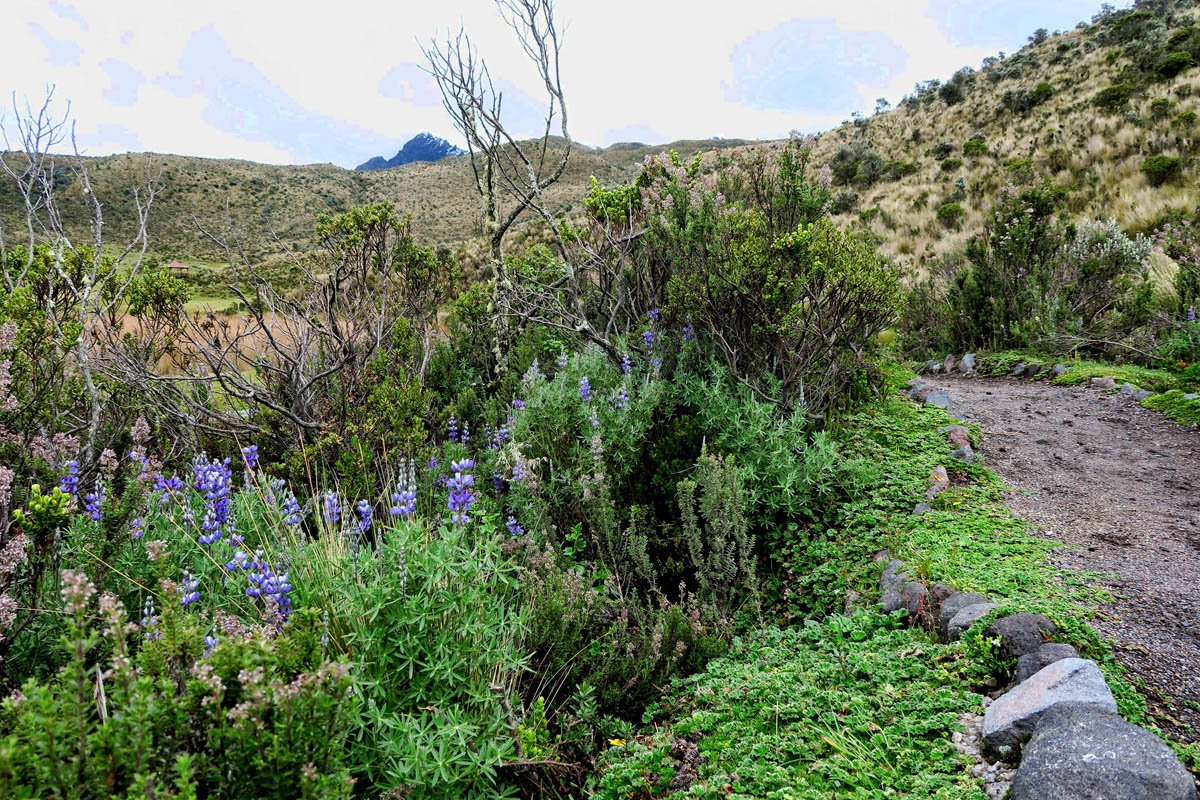 It’s a real treat to get out of the bus and stretch my legs, not something you can do on local transportation! 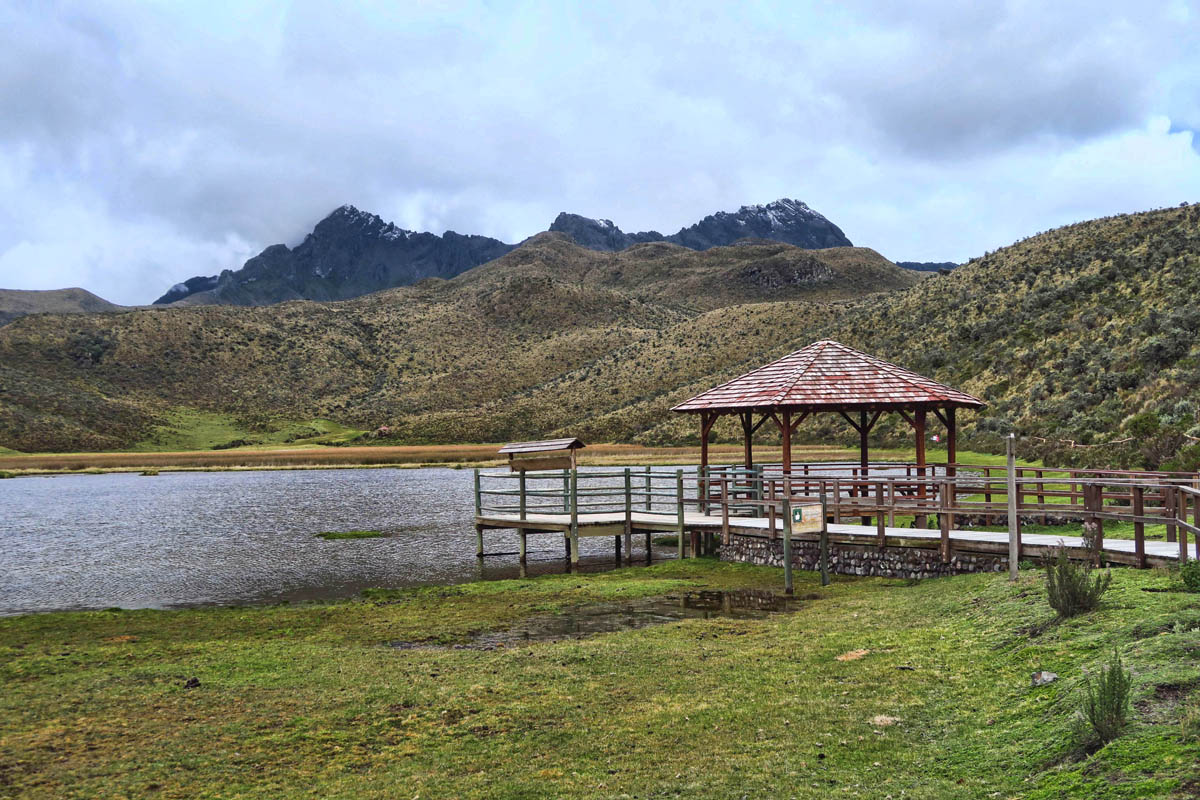 The trail is empty except for the dozen or so Wanderbus group. 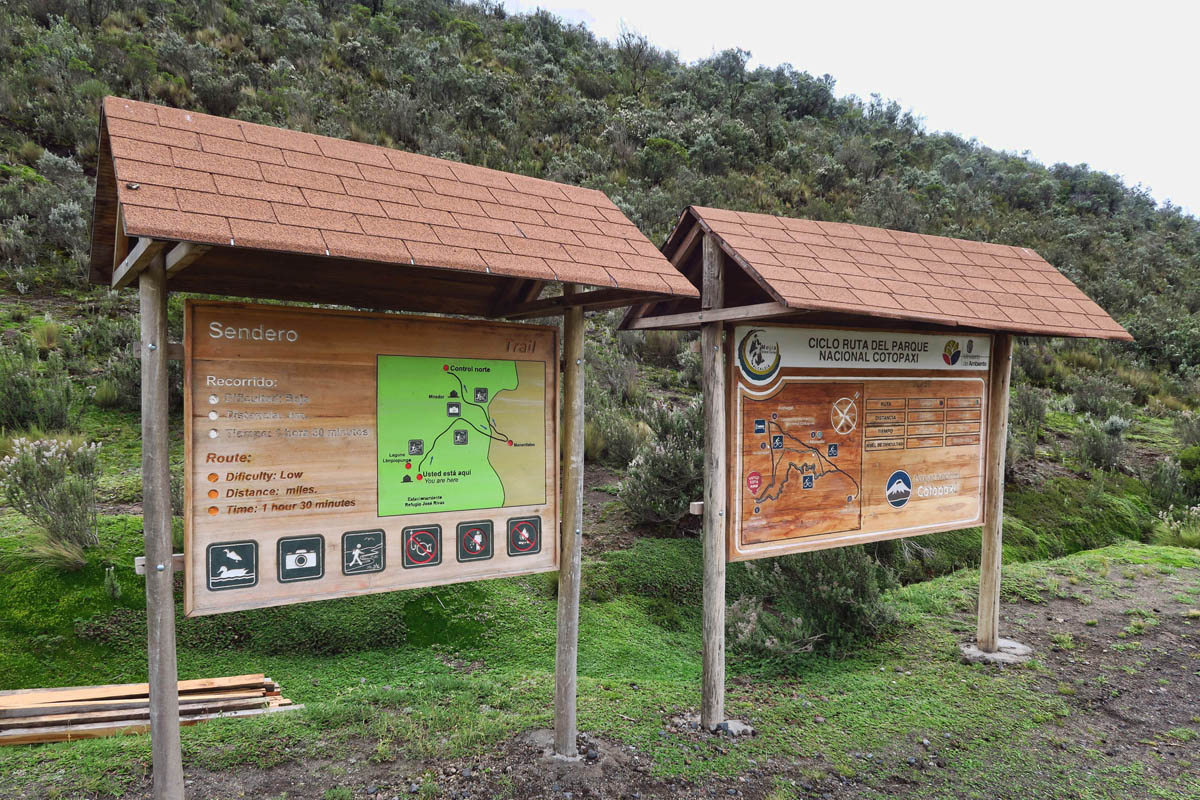 There are several hiking trails in this area. 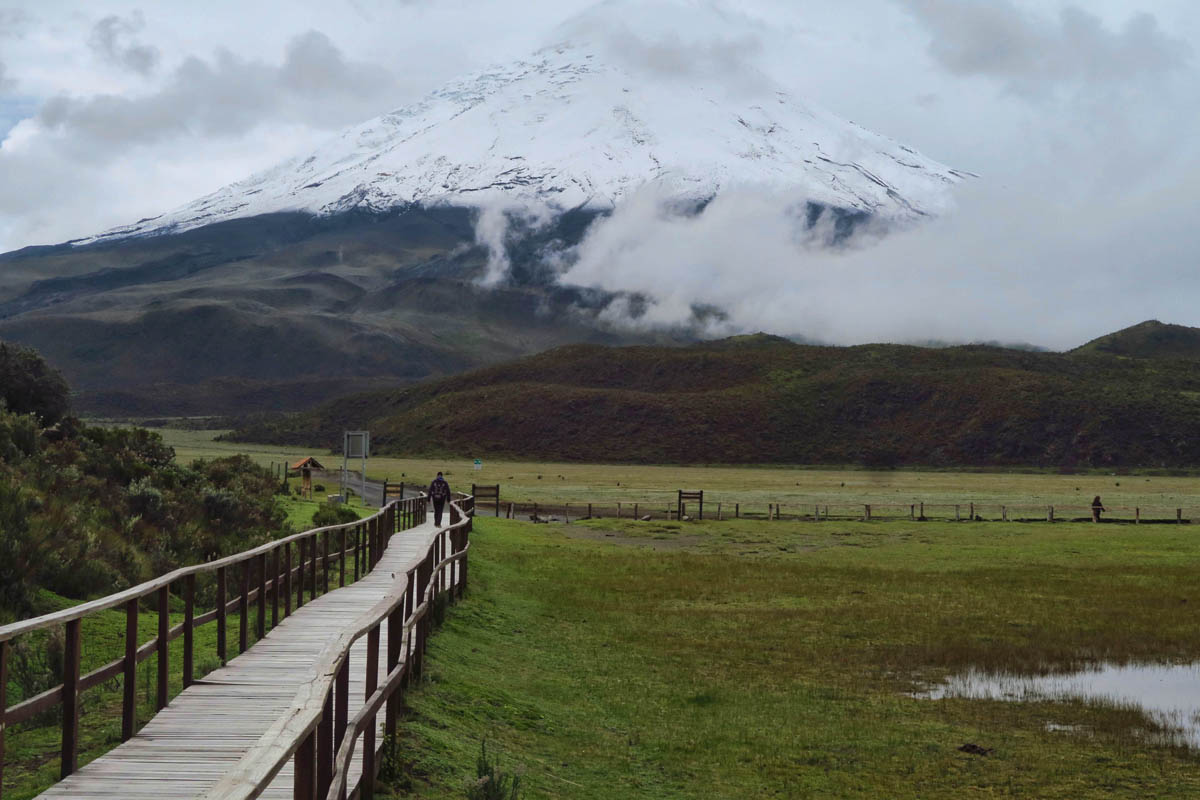 One last glimpse of Cotopaxi before it disappears for the day.

After an invigorating walk to the back side of Limpiopungo Lake, we move on down the Pan American Highway to the small town of Pujilí for lunch in a local restaurant, three courses for a grand total of $2.75! (Since the year 2000, Ecuador has used the US dollar as their currency.) That’s another thing I appreciate about the Wanderbus, and that is their efforts to “keep it local.” 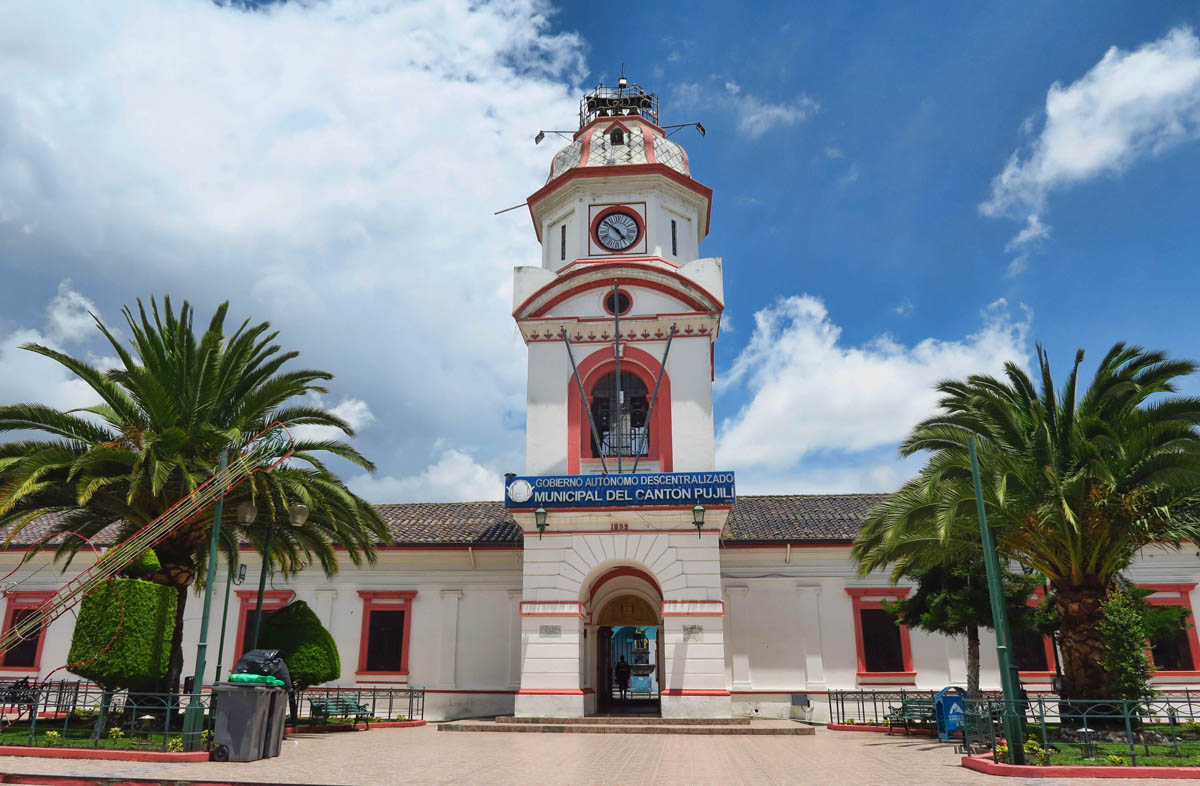 The little town of Pujilí is not known as a tourist attraction. We are only stopping for lunch at a local restaurant. 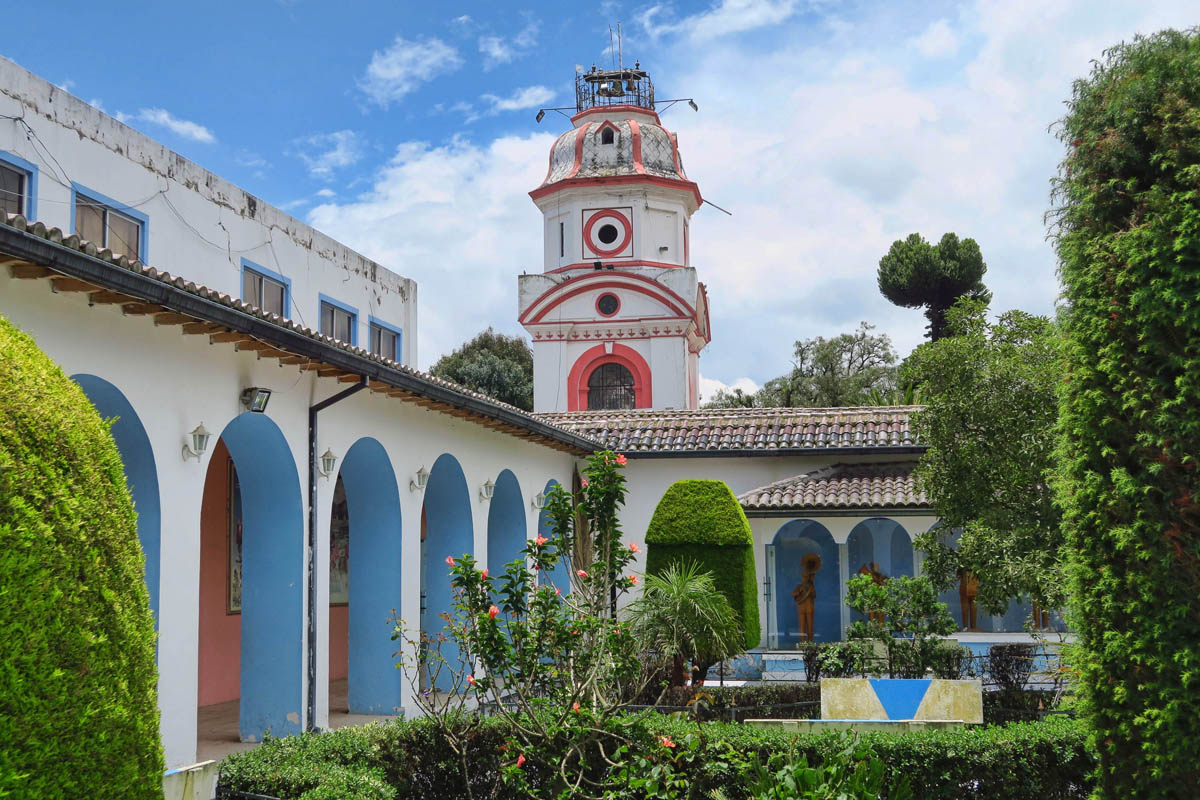 There is a pretty significant market in this small town, but sadly we are here on the wrong day.

As the Wanderbus continues on around its circuit, climbing higher into the Andes, I’ll be “hopping off” at the next stop for a few days in Quilatoa, coming up next…