As the Wanderbus climbs up the winding roads gaining elevation, we near our next stop for the day, Quilatoa Crater. The bus will be continuing on after a brief stop at the overlook, but I am choosing to “hop off” to spend a couple of nights here. I ask Darien, our English speaking guide if he knows the location of the hotel I have booked, and if I will need to take a taxi. He laughs out loud and says, “A donkey, maybe. But not a taxi!”

I soon find out the absurdity of my question, as the bus pulls into the remote Andean indigenous village. It’s little more than one lone street about the length of three blocks. I swallow back a sense of dread as the Wanderbus pulls away, leaving me there for what could potentially turn out to be a very long two days… 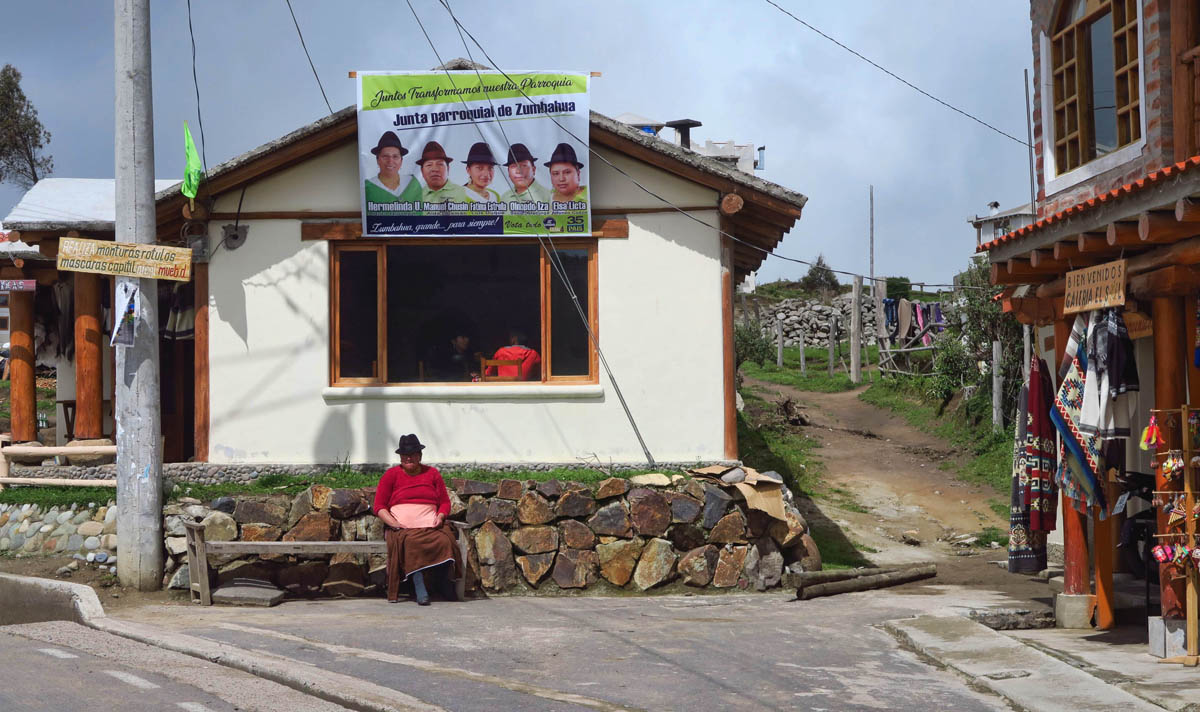 There’s an election coming up in this Kichwa province. Note the political billboard atop the building. Gotta love how all the candidates sport the same hat. 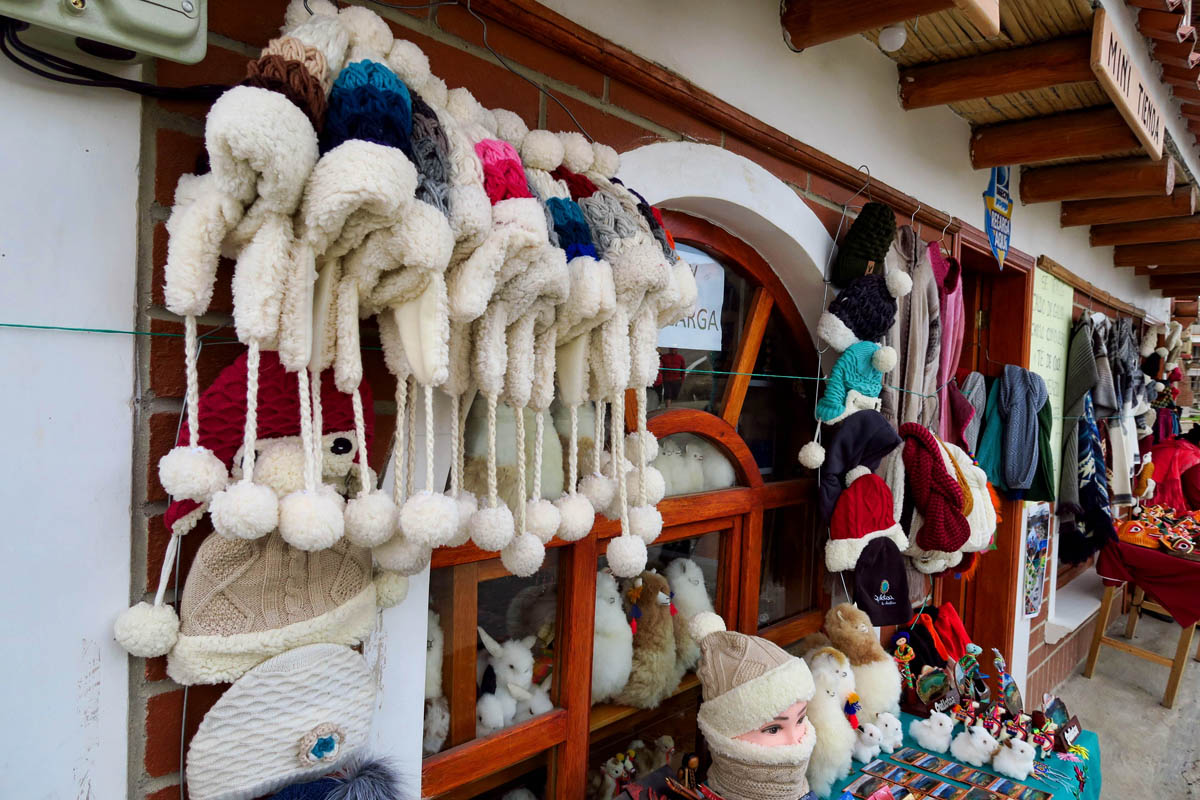 Lots of handicrafts for sale in town, including items from wool and alpaca. 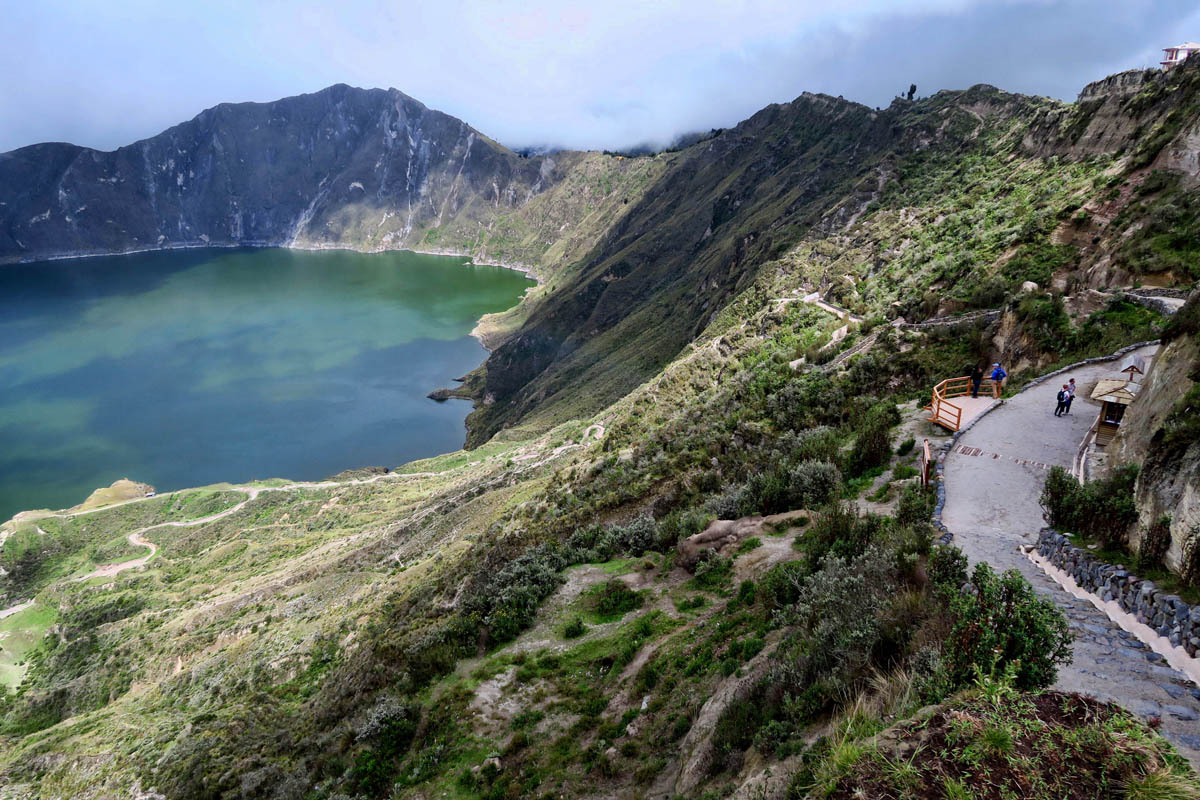 Getting my first glimpse of the crater lake from the rim overlook. 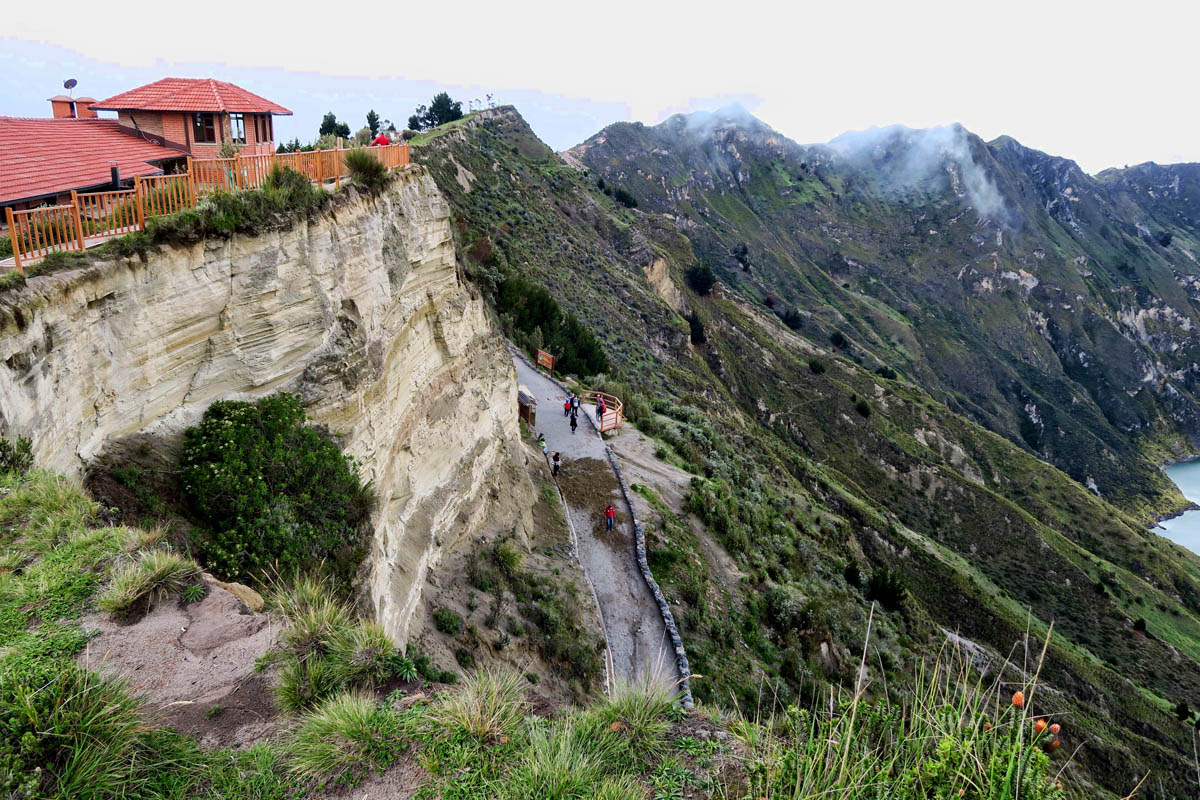 There is a path that goes down to the lake where you can rent a kayak…and a donkey to bring you back up!

Hiking up the slight hill into the town of Quilatoa hauling my luggage, my breathing is labored. Although I have acclimatized to Quito’s 8,000 ft, the town of Quilatoa is over 12,000ft. The sun is brilliant, but the air is brisk. How is it possible that I am both hot and cold at the same time?

I have booked a room at the Hostal Chukirawa (small hotels in Ecuador are called “hostals,” though most are not in the true sense of a dorm-style hostal.) The hotel is the closest to the lip of the crater, right across the street. Not just the hostal, but the entire town is run by the indigenous tribe, the Kichwa.

The Andean Kichwa women are beautiful, with their silky-straight, long black hair braided under their black felt fedoras. They all wear white stockings and black flats beneath their brightly colored skirts. But the most distinguishing part of their wardrobe is their vibrantly colored shawls with the long, silk fringe in rich jewel tones. 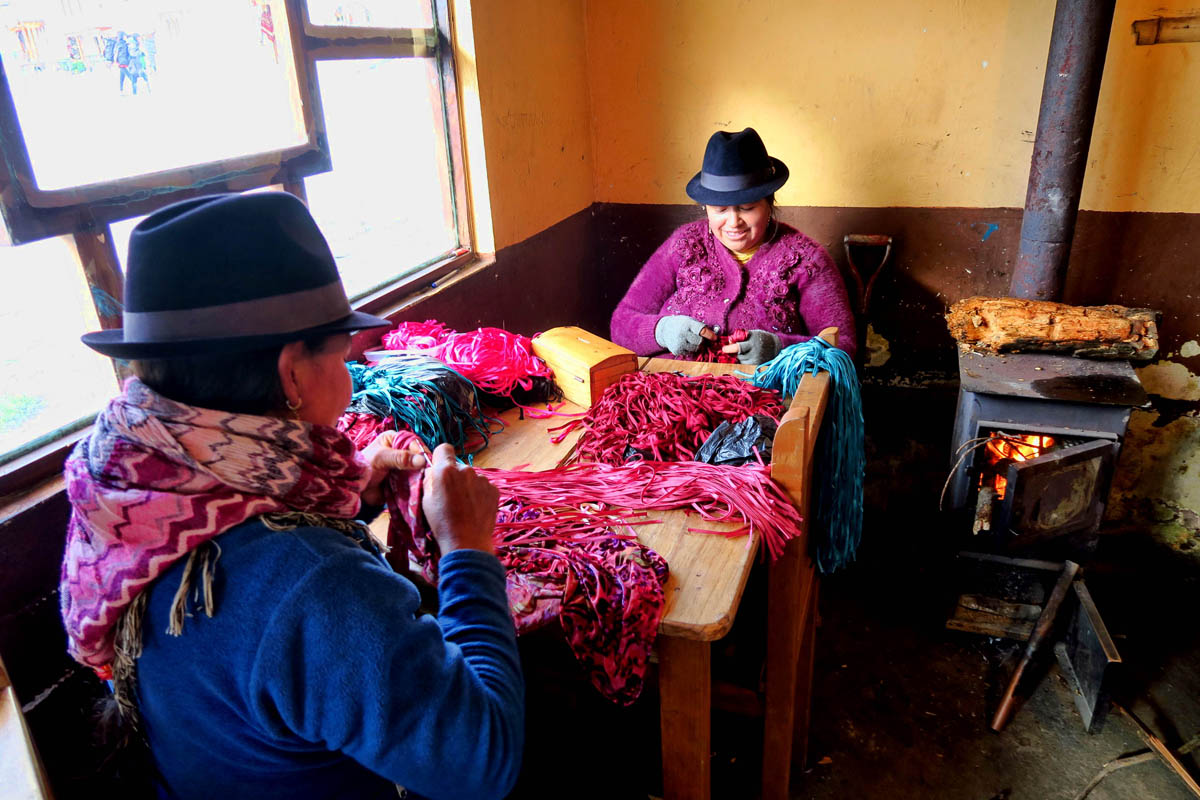 These women are making the shawls. The piles of silk threads on the table will make up the long fringe. 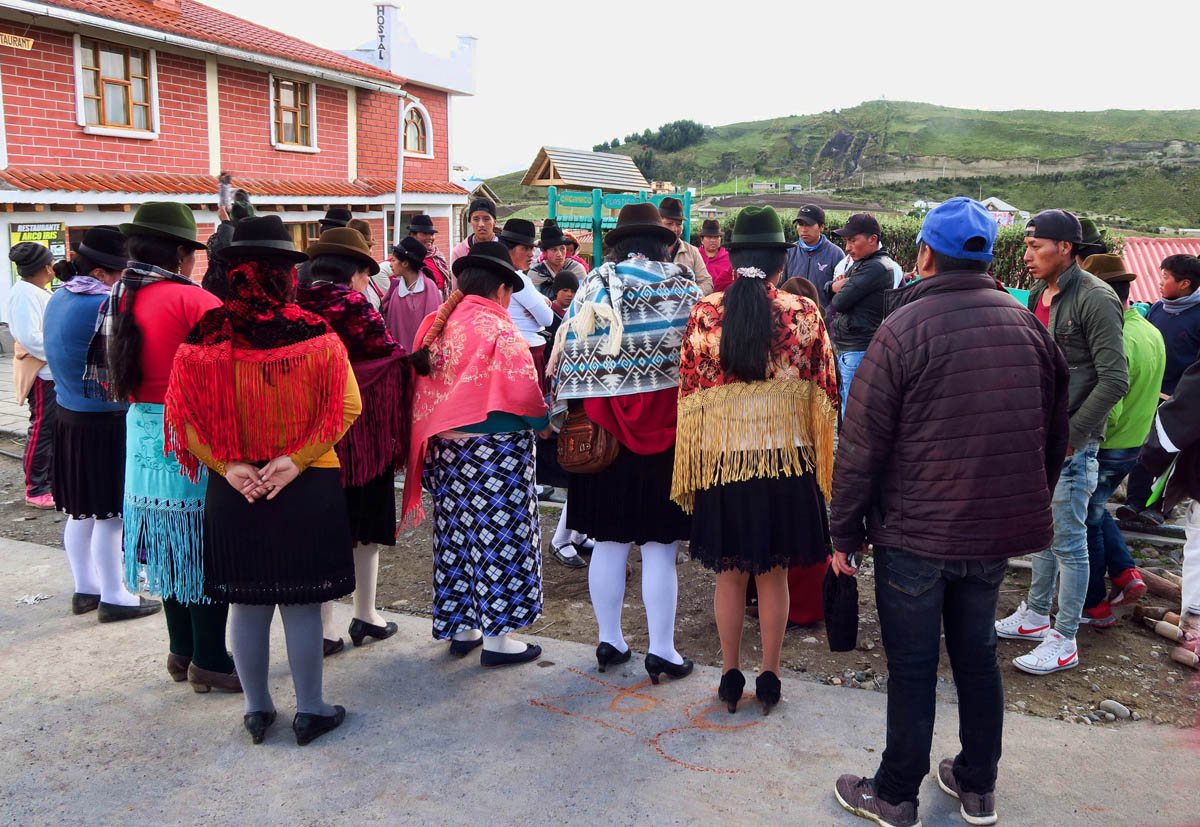 There is a town meeting taking place. I ask around and learn it has to do with new parking spaces that will be sectioned off. Later, I see some of the women with chalk labeling their designated space.

Quilatoa is a bit off the beaten path. Aside from the occasional tour bus like the Wanderbus that stops long enough to have a look over the crater edge, those that overnight do so for two reasons, either to hike the crater rim, or to do the longer, four day village-to-village Quilatoa Loop. While I would dearly love to do this village-to-village hike, I do not have the confidence to navigate the loop alone. And with no kind of satellite signaling backup, no GPS, and spotty cell service, it just doesn’t seem like a smart idea to wander from village to village, lest I can’t find the village! Though after meeting several people coming off the loop, I have a feeling I wouldn’t have been alone for too long. Still, with no gear whatsoever, I will just have to settle for hiking the crater rim. 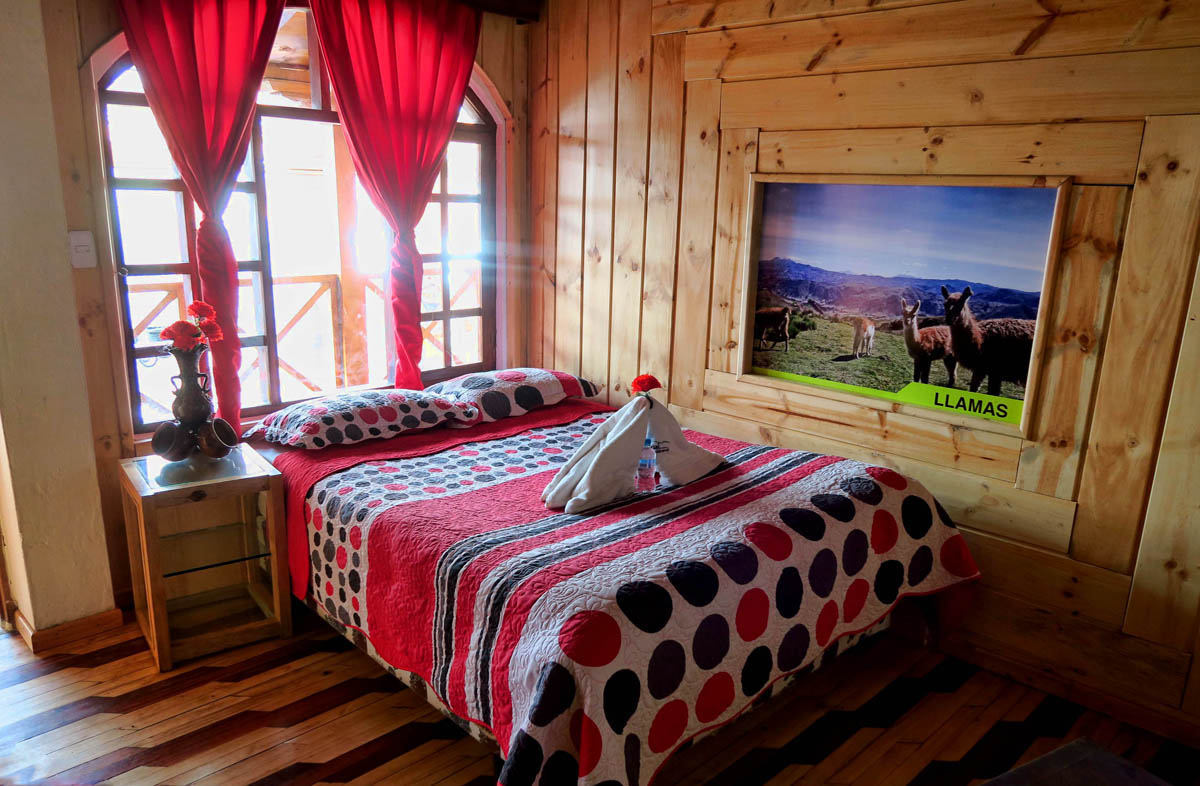 I love my room in the little Hostal Chukirawa. Very cozy. 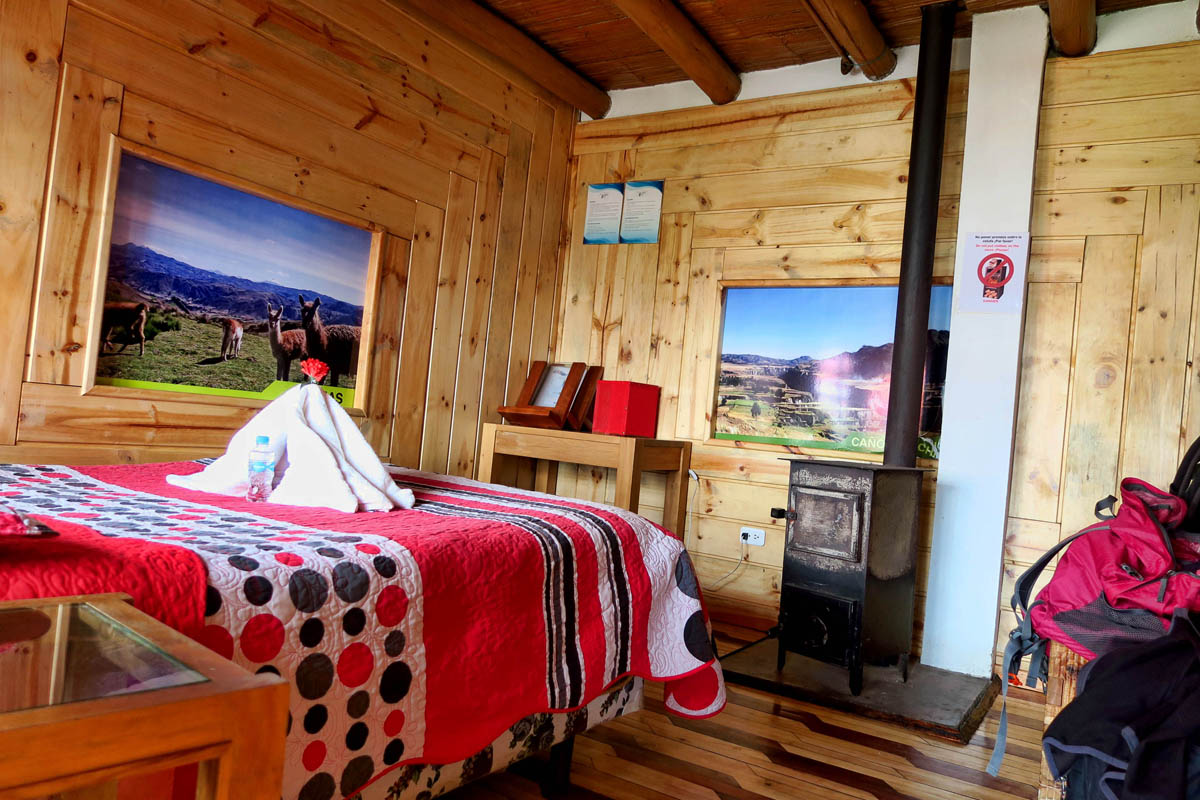 It was $27 per night including dinner. 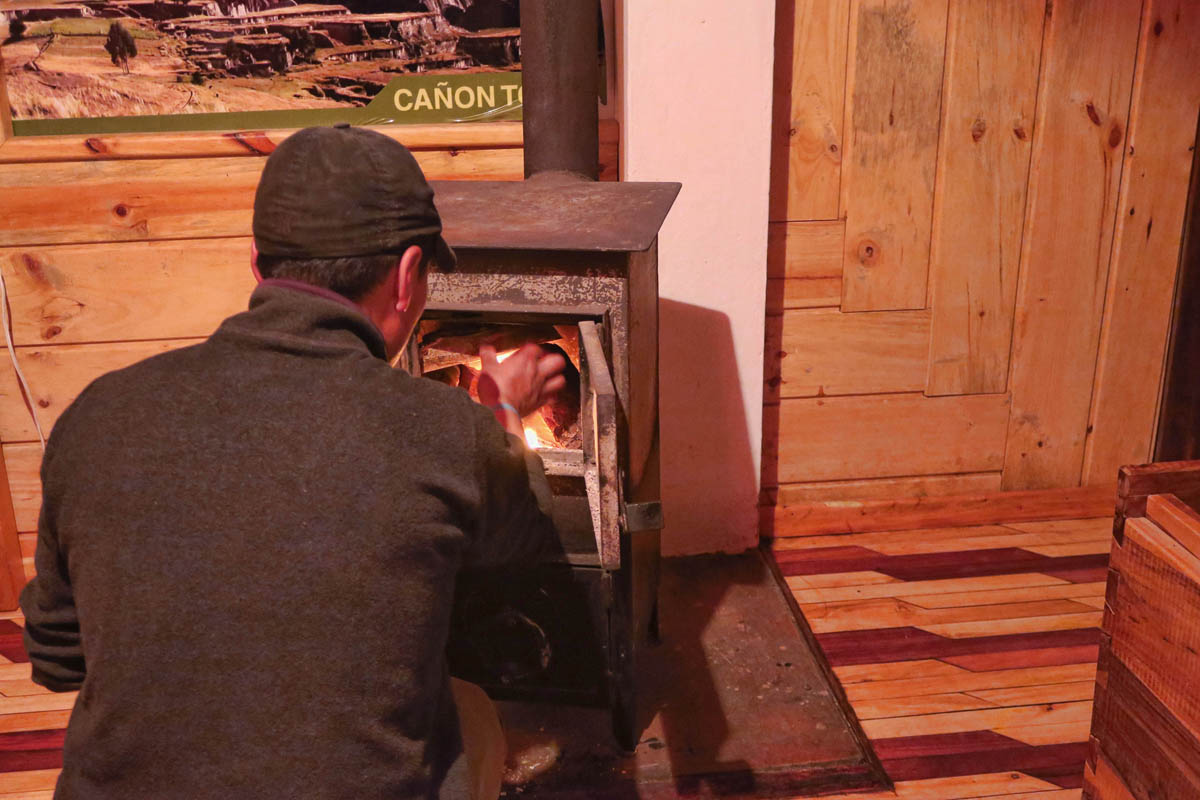 It gets really cold at night, so this man comes in each night to light the wood burning stove. Pay no attention to the gallon of kerosene he is carrying into my all wooden room! He fills a tuna can with kerosene, and piles on wood from the woodbox in the room. 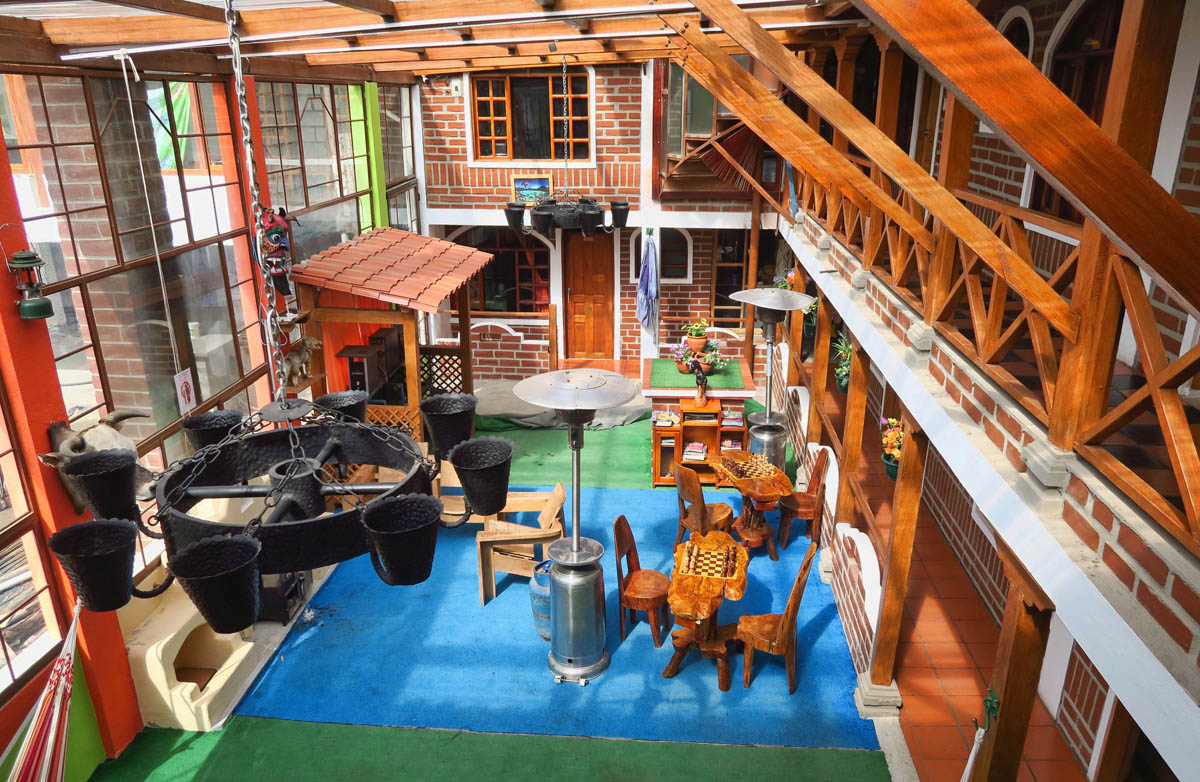 This is the lobby area of the hostal. Out of the frame are some very comfy hammocks where I did some time.

The Quilatoa caldera was formed by the collapse of a volcano following a catastrophic eruption about 600 years ago. The collapsed cone has since filled with mineral-rich waters to a depth of 850 ft. The minerals cause the water to take on a green cast, which goes from a deep forest green on a cloudy day to shimmering emerald green in the sun to a patchwork quilt of variegated greens on a partly cloudy day.

Estimates for hiking time had ranged from four to six hours to complete the entire rim. I figure I’d better allow for eight given my slow pace, so I get up for what is to me, an early start of 9am. It’s a gorgeous morning. While the temps are a bit brisk at this early hour, the sun is warming through my black fleece-lined jacket (fortunately not one of the items stolen back in Quito since I was wearing it!) 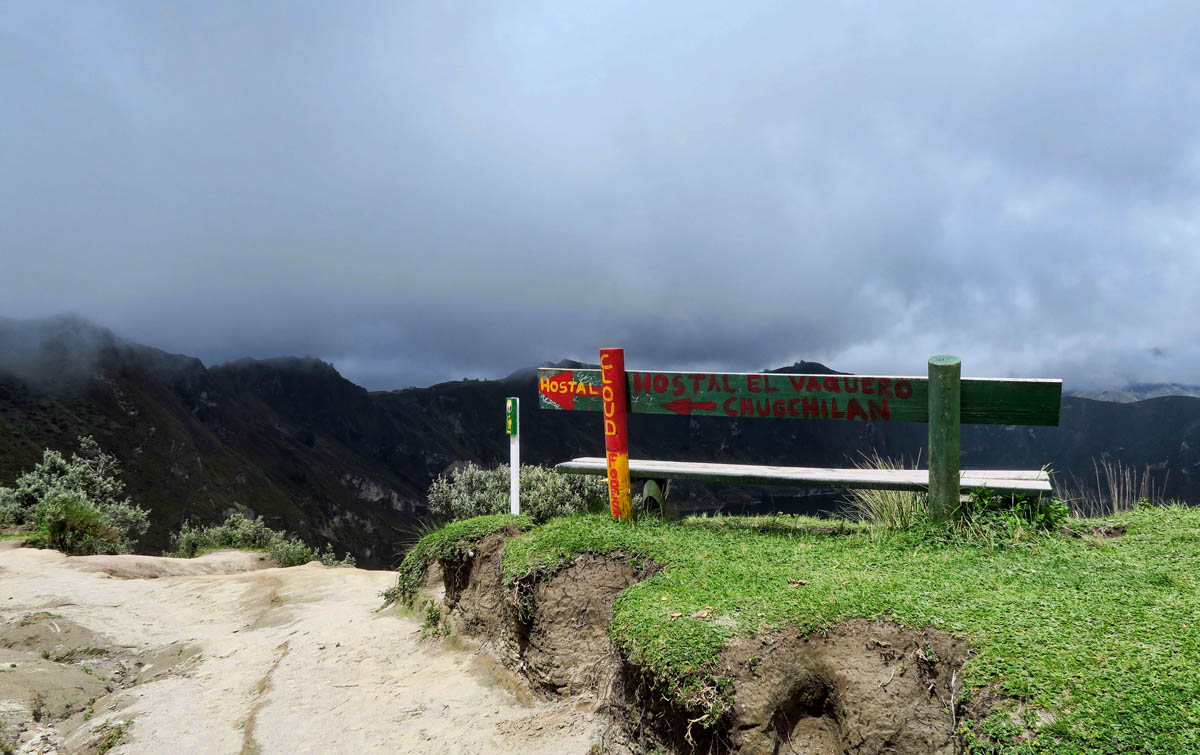 A nice viewing bench at the start of the trail. 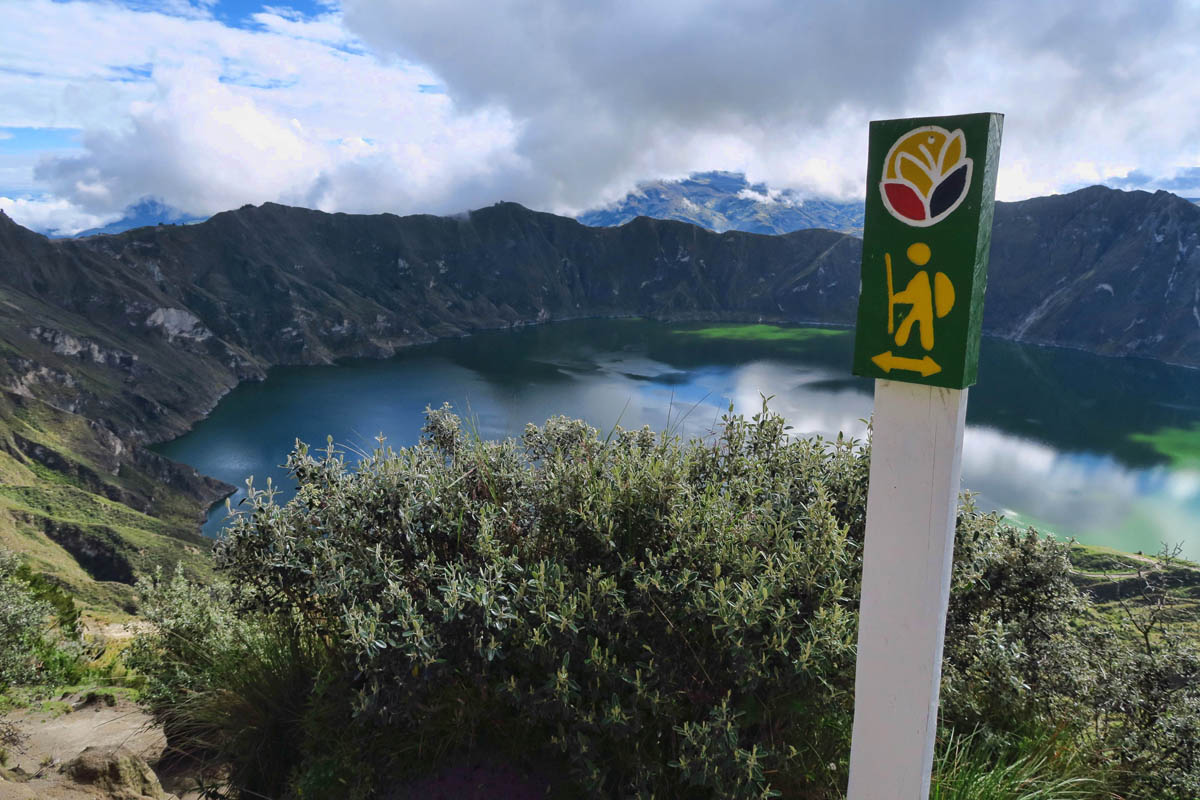 Signage at the beginning of the rim trail is in abundance. 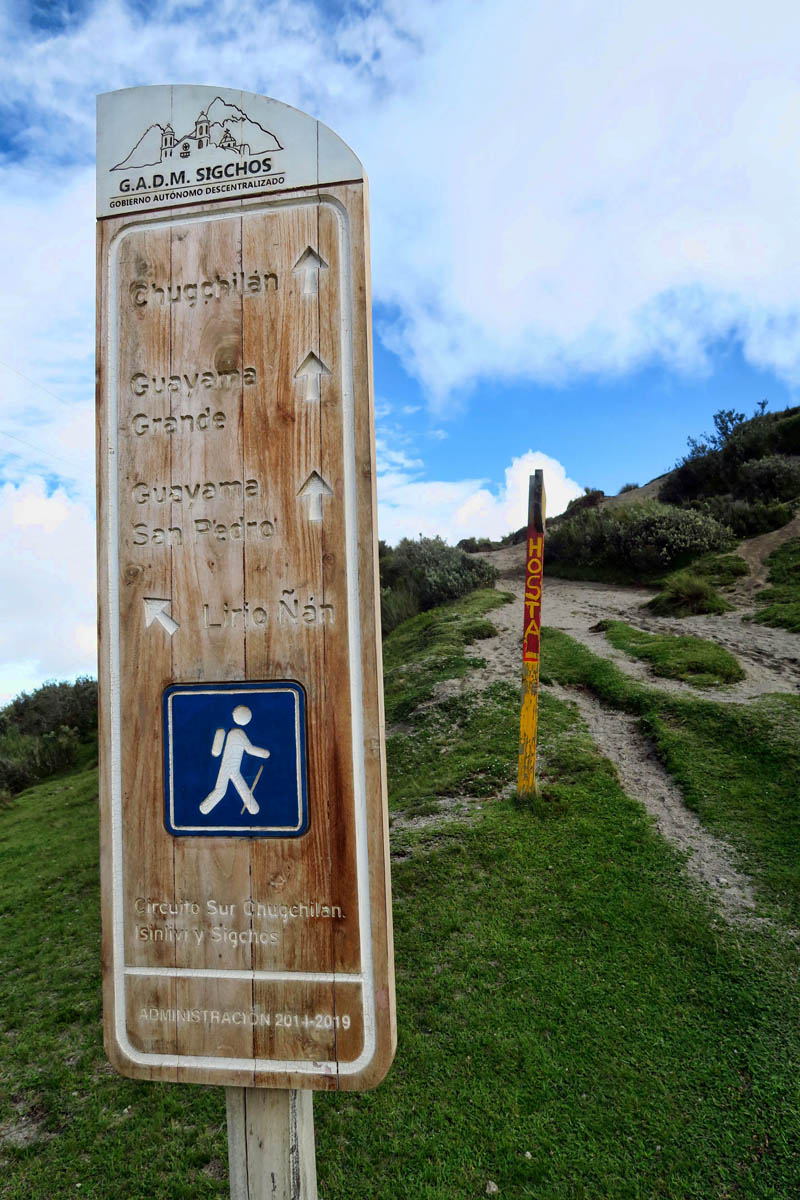 There are so many hiking signs they are redundant. 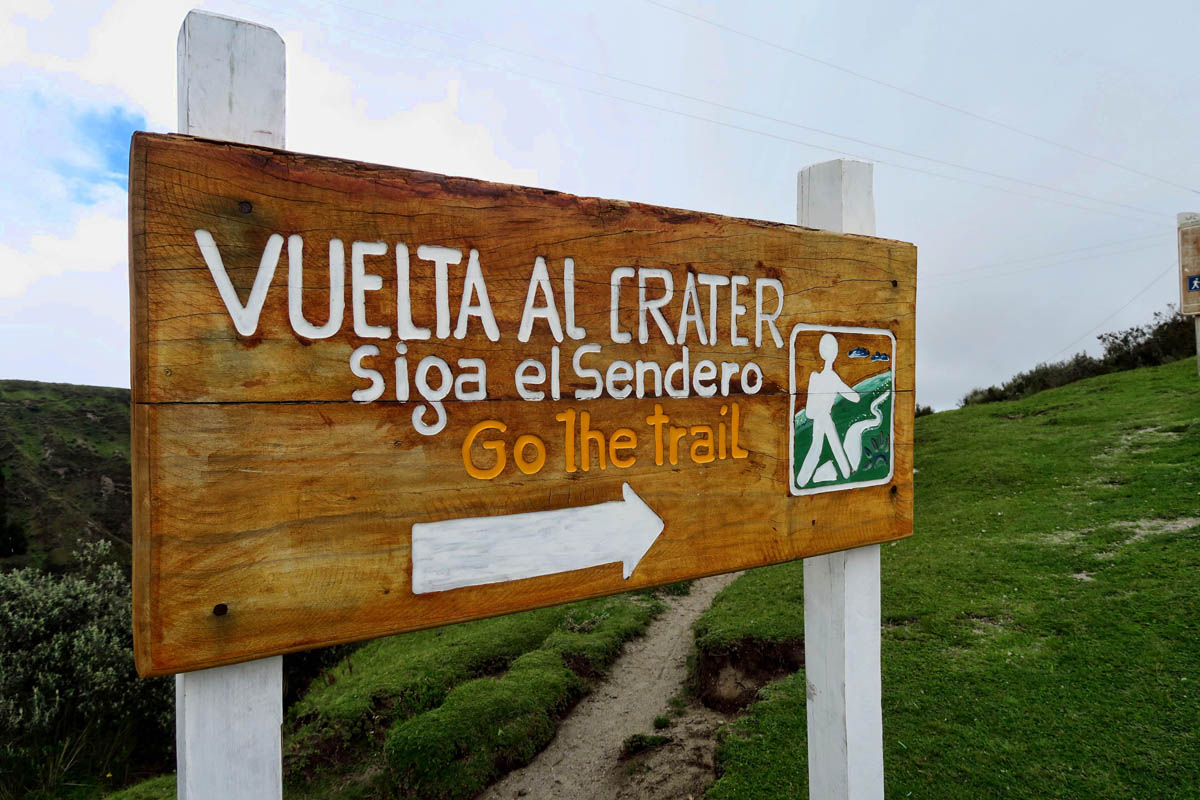 However, little do I know at this point that these will be the last of the signage I see for the remainder of the hike! 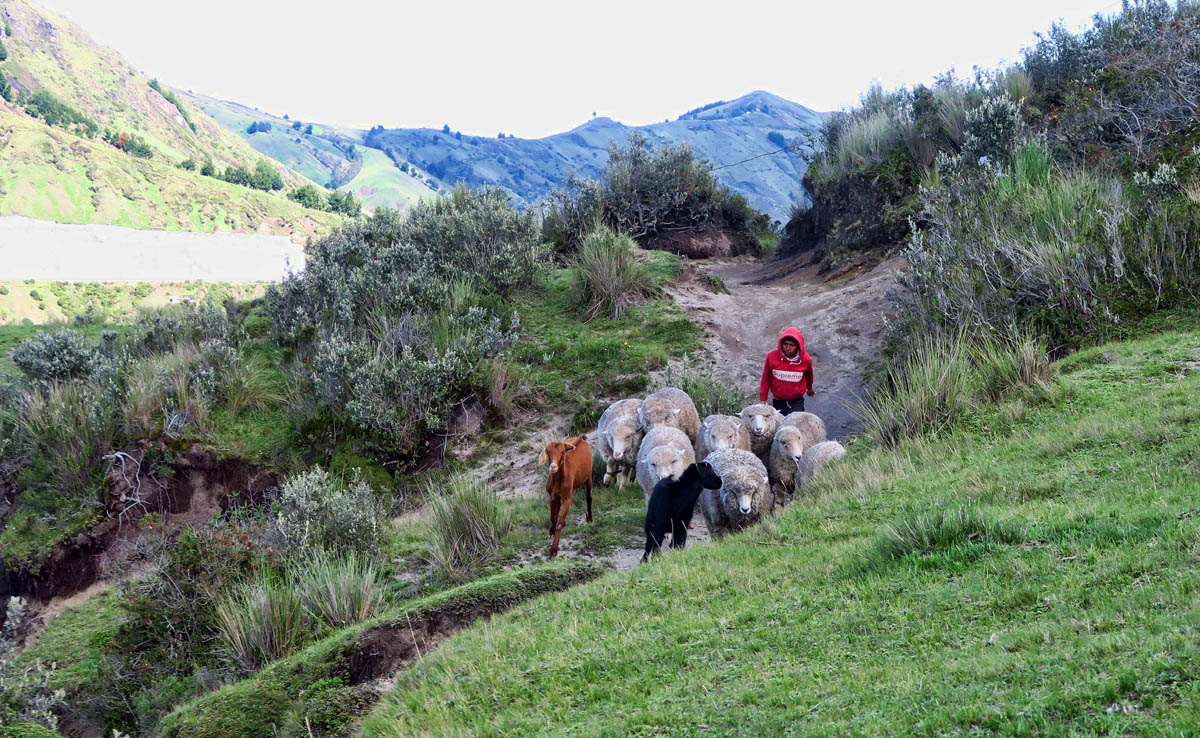 I have some company along the trail. He asks me for candy. When I say “No tengo,” he asks for a dollar. 😉 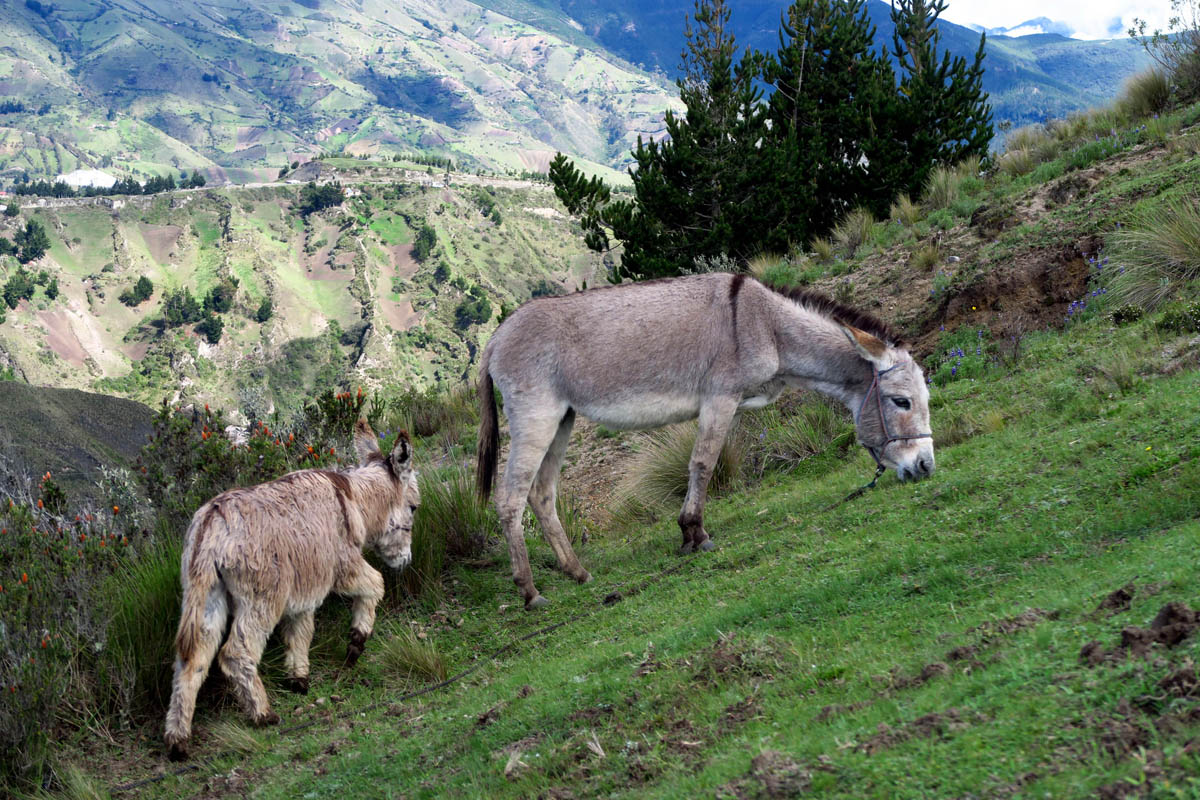 The trail is a bit challenging, with some fairly steep ups and downs. I am understandably winded, given it is at 12,000 ft elevation, but I have plenty of time, so I just pace myself. The first traffic I meet on the trail is a young goat herder with his flock. Donkeys graze along the trail, while I encounter a few young “trail bandits,” little imps asking for candy.

The funny thing is, there is all sorts of signage at the beginning of the hike when there is no doubt which way to go. It’s very reassuring. However, further on around the loop, the trail splits off frequently, with zero indicators as to which way is the “right” way. I soon learn the hard way that most of these forks in the trail come back together eventually, but one goes around the lower path outside of the rim, while the other leads right up over the knife blade edge. Would be helpful to know ahead of time which is which! 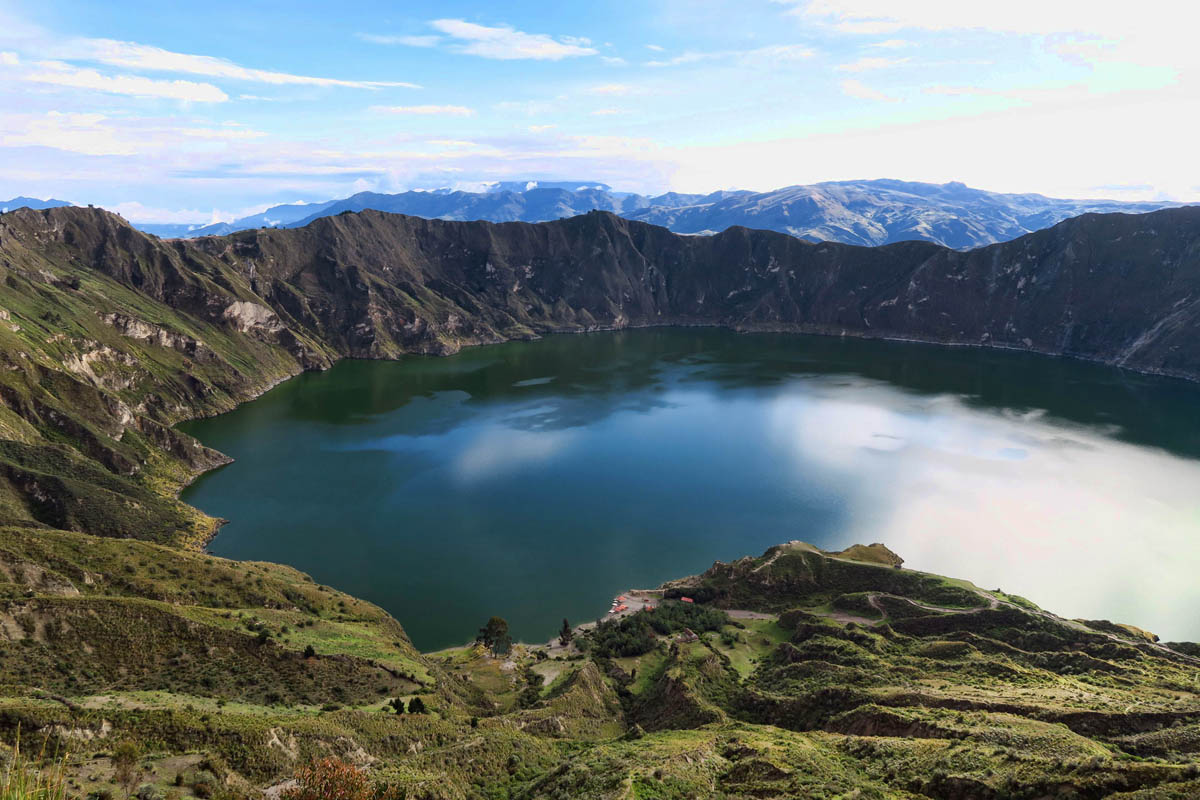 The views are gorgeous, and time passes very quickly along the trail. 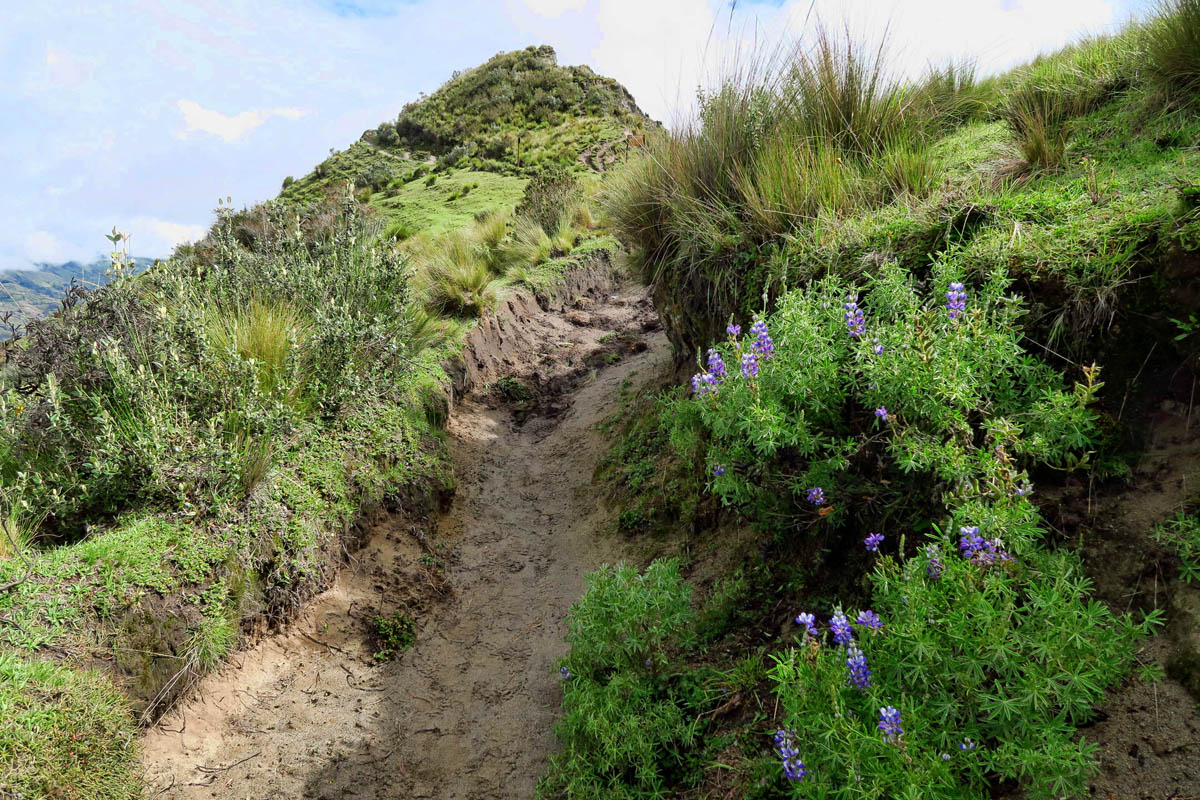 There are a few wildflowers along the path. 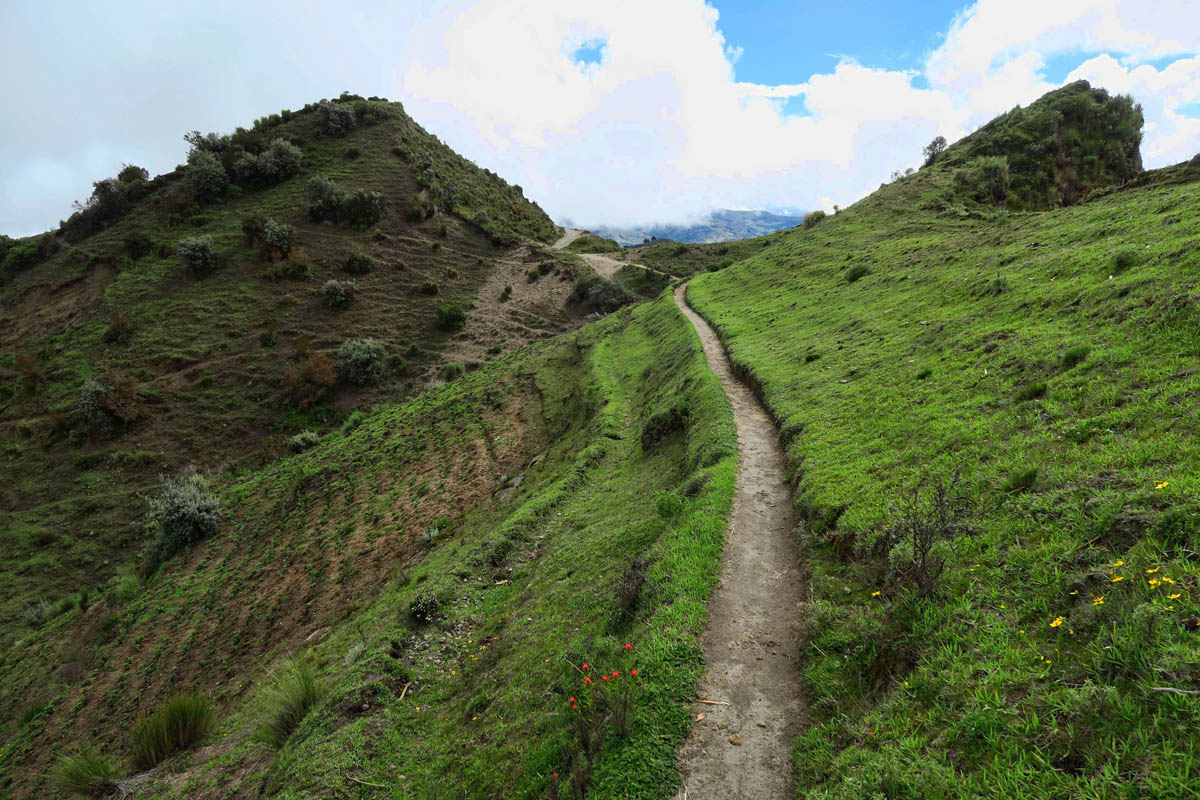 A few welcomed flat stretches where there appears to be some cultivation on the left. 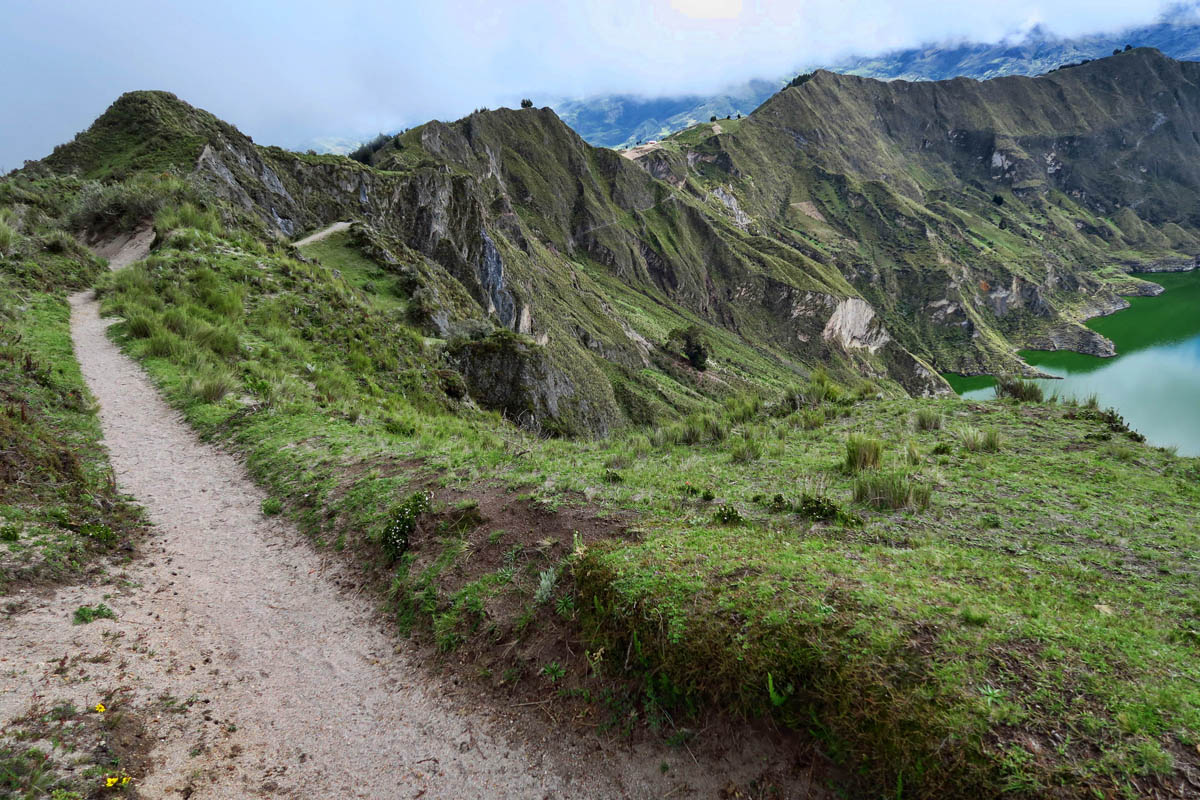 This trail is a bit of a roller coaster! 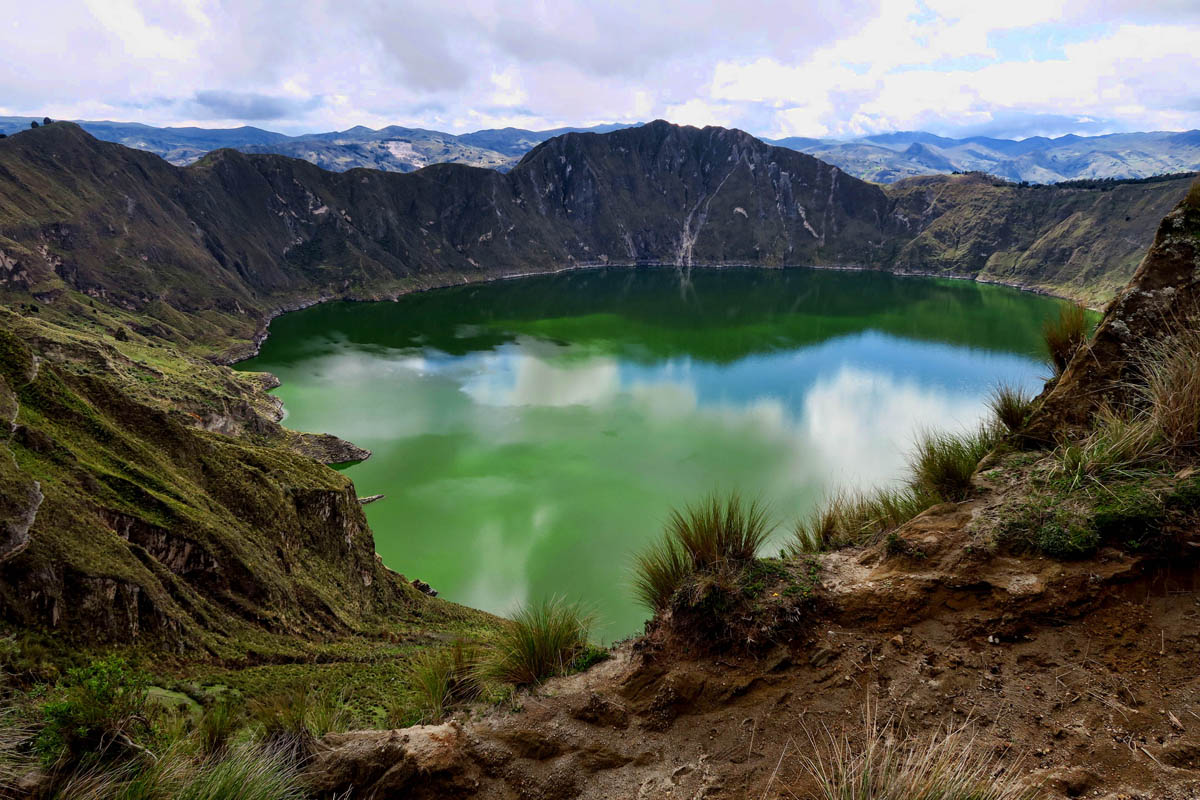 When the sun is out, the clouds reflect in the mirror-like surface. 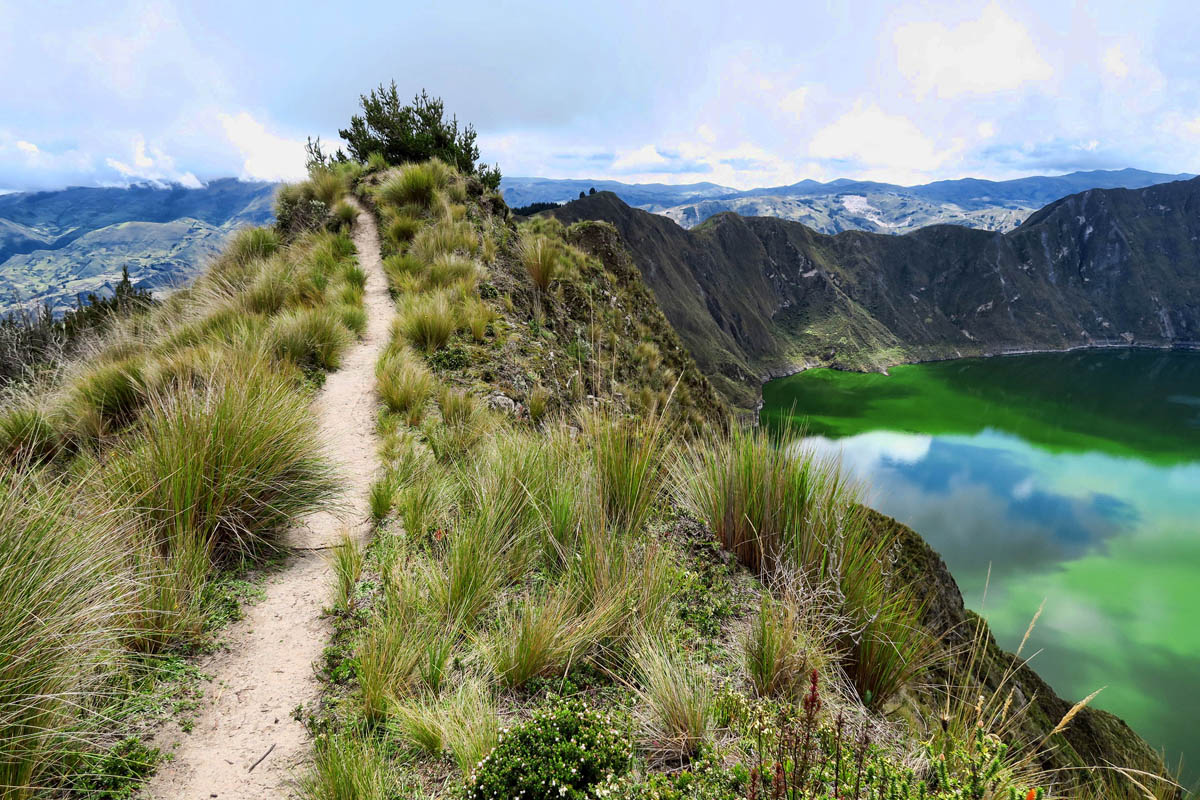 The trail split behind me. I obviously took the “high road!”

After a couple of hours, I come to a “tienda,” or small store perched on a sandy saddle about a third of the way around, run by two Kichwa women sitting around a fire. I decide before I even go in that I am buying something, just to support their initiative in hauling up merchandise from the village below. My choices are warmish beer, orange soda, and Coke. I pay two bucks for a bottle of sugary Coke, the best I can recall after two hours of hiking. I sit on the rudimentary bench and enjoy the view, when one of the Kichwa women comes over to peer over the edge. She points to the clouds and gives me a stern look, saying “Lluvia!” (rain!) They don’t look like rain clouds to me. High and puffy and intermittent, but not like thunderheads. So I finish my bottle of Coke, then continue on… 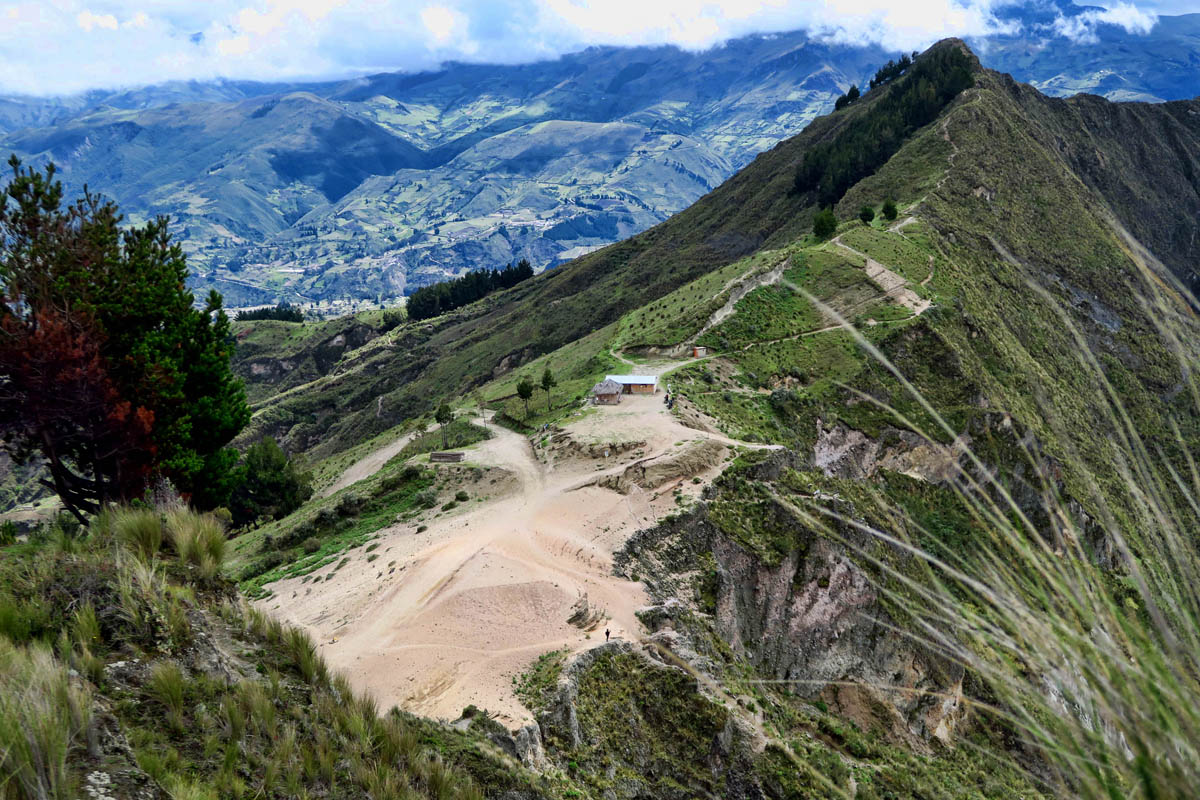 Down below in the sandy saddle I spy a little hut. 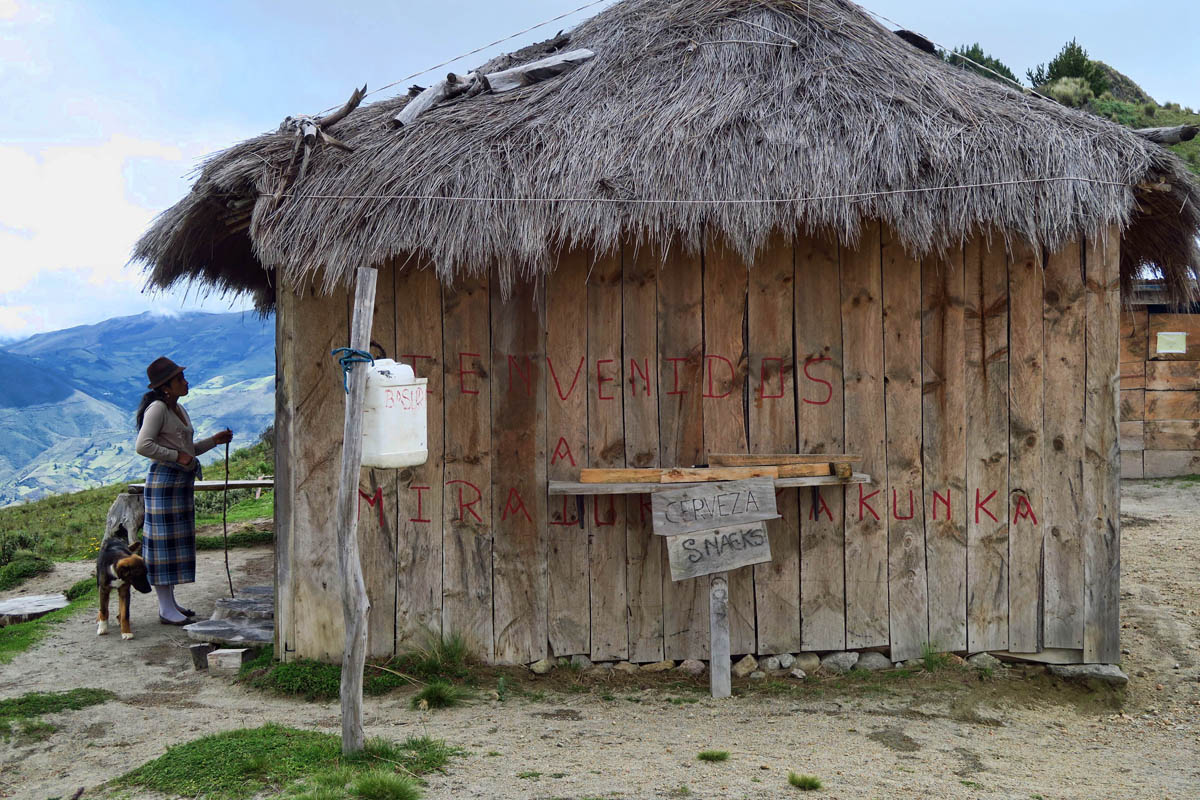 “Cervezas and Snacks!” Who could ask for anything more? 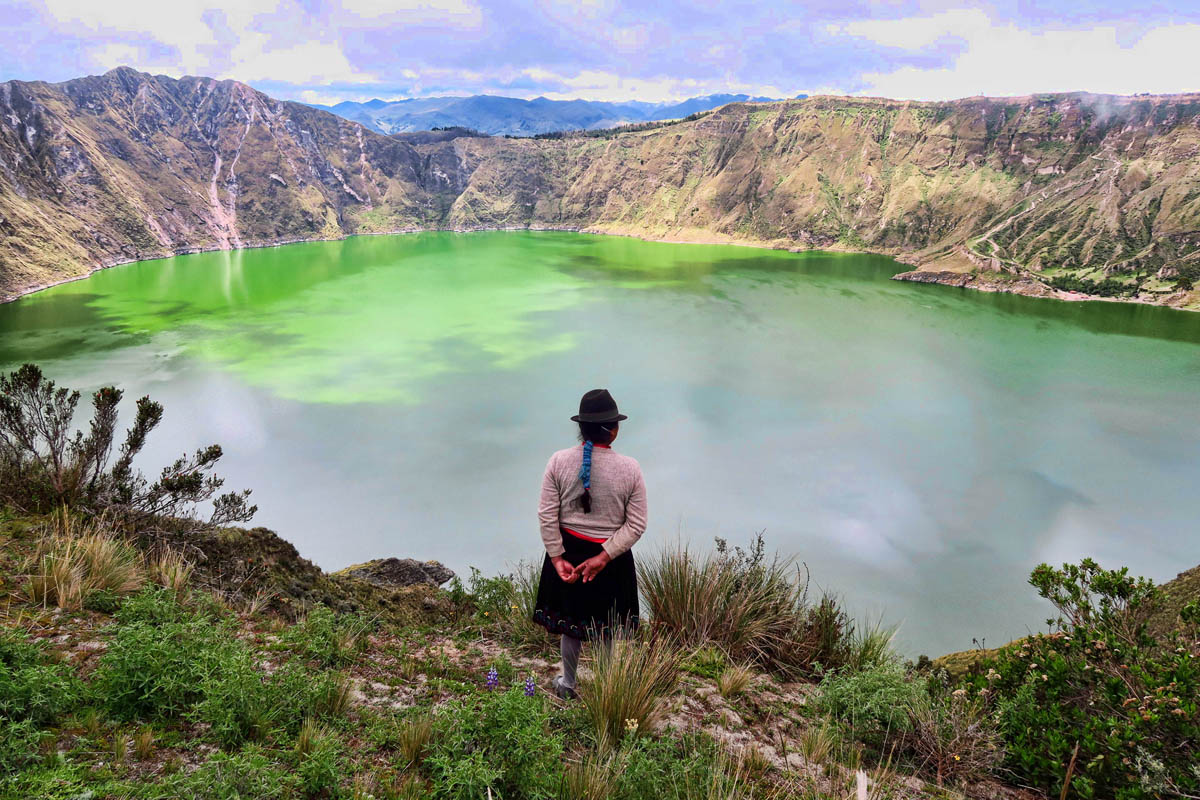 This lovely woman has walked over to warn me of rain, though with sun on the lake I am skeptical. 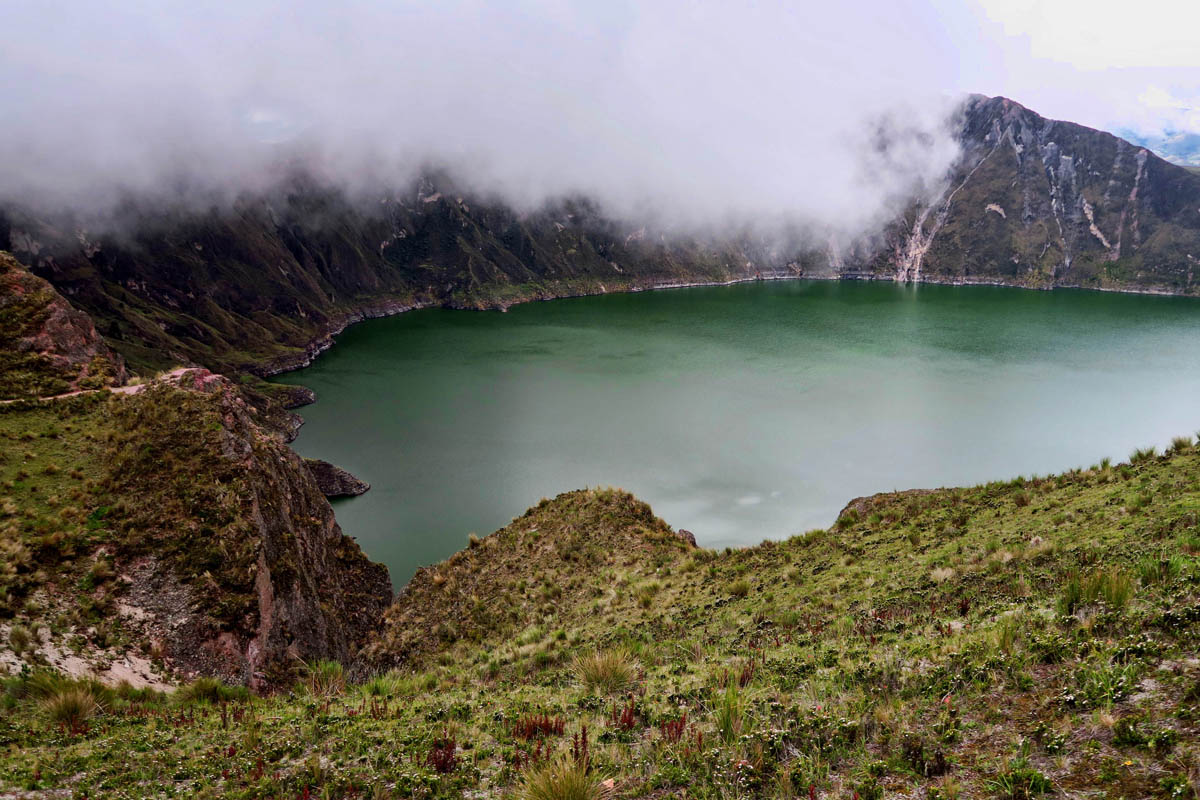 Turns out she is right! Time to put the camera away. 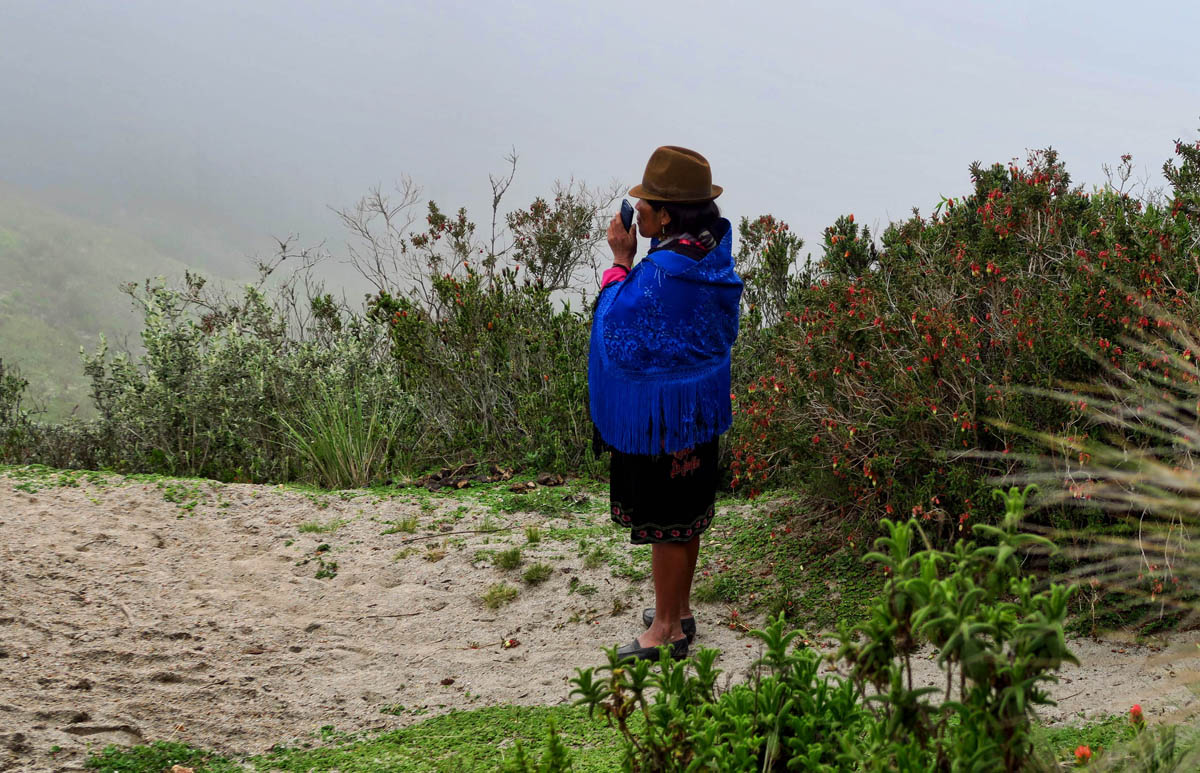 I have to laugh, here in this remote trail in the high Andean hills, an indigenous woman is yammering away on her cell phone… 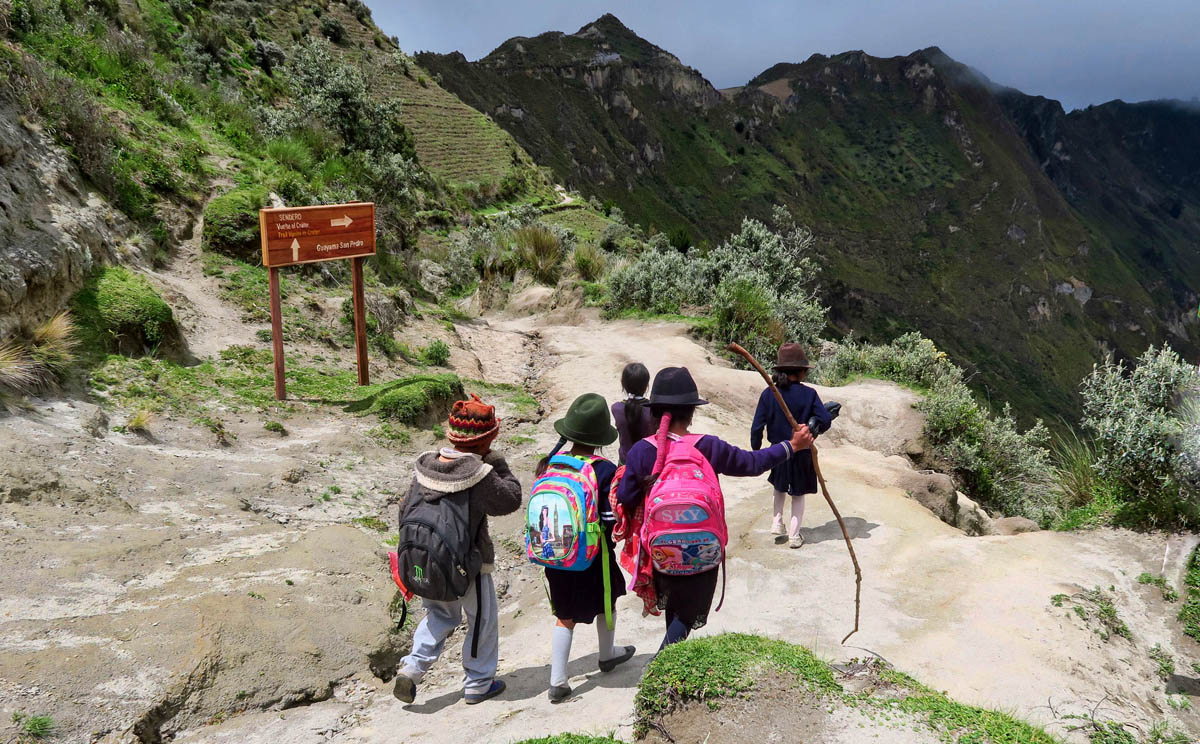 After another half an hour of continuing along the rim, the clouds start drifting across the crater. But I am determined to continue on. However, what was once formulated clouds overhead drops down into a fine mist, and I am now in the clouds, not under them. I can’t see but a few feet in front of me, and the trail up the ridgeline is becoming narrower and wet from the mist. All I can see is the knife blade path that drops off into an infinitude of white on either side of me. The further into the clouds I ascend, I find myself humming, “and she’s buying a stairway to…Heaven.”

Now at the halfway point, I am faced with a difficult decision. It will be the same distance back to the hostal either way. Do I continue on in order to see the remainder of the trail? But if this mist doesn’t lift, how much will I see? As badly as I want to complete the rim, as badly as I don’t want to backtrack, the thought occurs, what if I am four fifths of the way around and the rain precludes me from continuing, and I have to walk all the way back around? I know nothing of the trail conditions ahead, and I haven’t seen any other hikers coming from the opposite direction since I left the Coke stand. Reluctantly, I surrender to the old adage, “The devil you know is better than the devil you don’t know,” and I turn around and head back the way I came.

Hiking solo always comes at a price, and discretion is one of them. 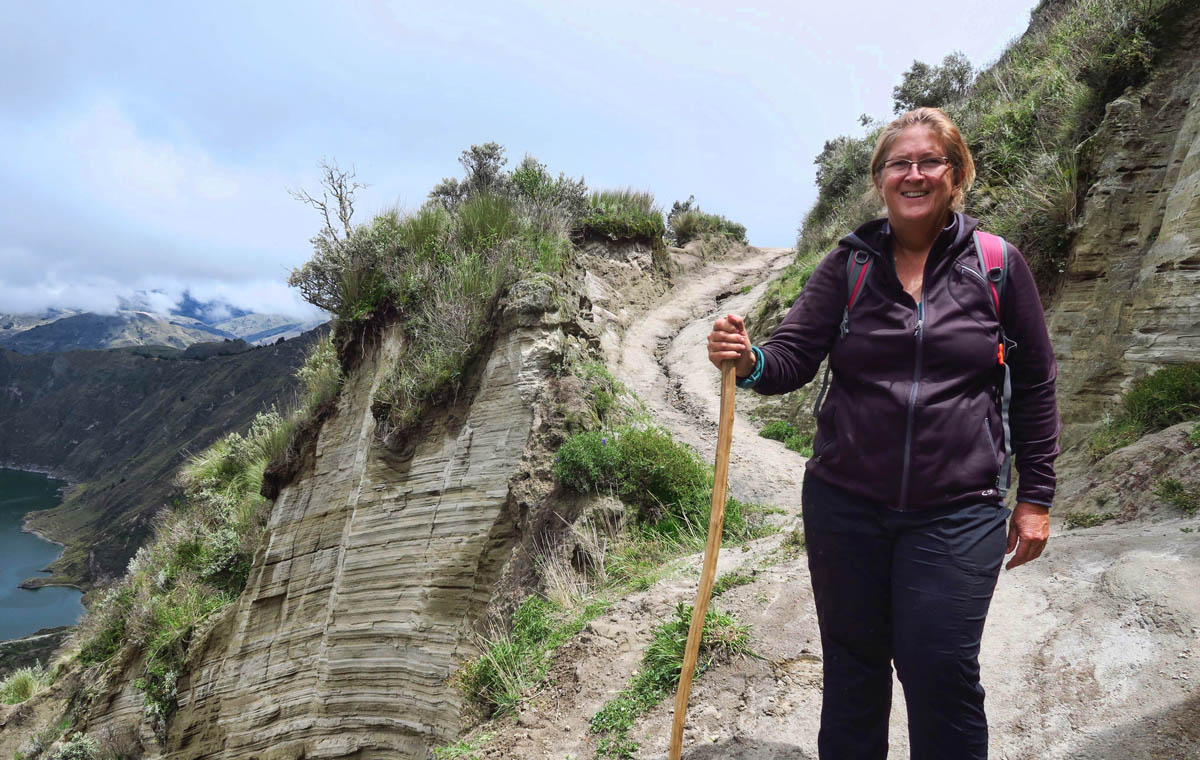 (I borrowed the stick from the local construction workers.)