The Lonely Planet travel guide describes my next stop along the Wanderbus route, Baños, as a “mixed bag.” Between their description of “garish tour operators, cut-price spas, and budget accommodations” that’s not exactly a glowing endorsement to lure me in, particularly when it is also billed as the “adventure center of Ecuador.” Too much testosterone. However, the name of the town which is actually Baños de Agua Santa, means “baths.” In other words, hot springs! It would take a pretty abysmal description to get me to skip a place named for its hot springs. 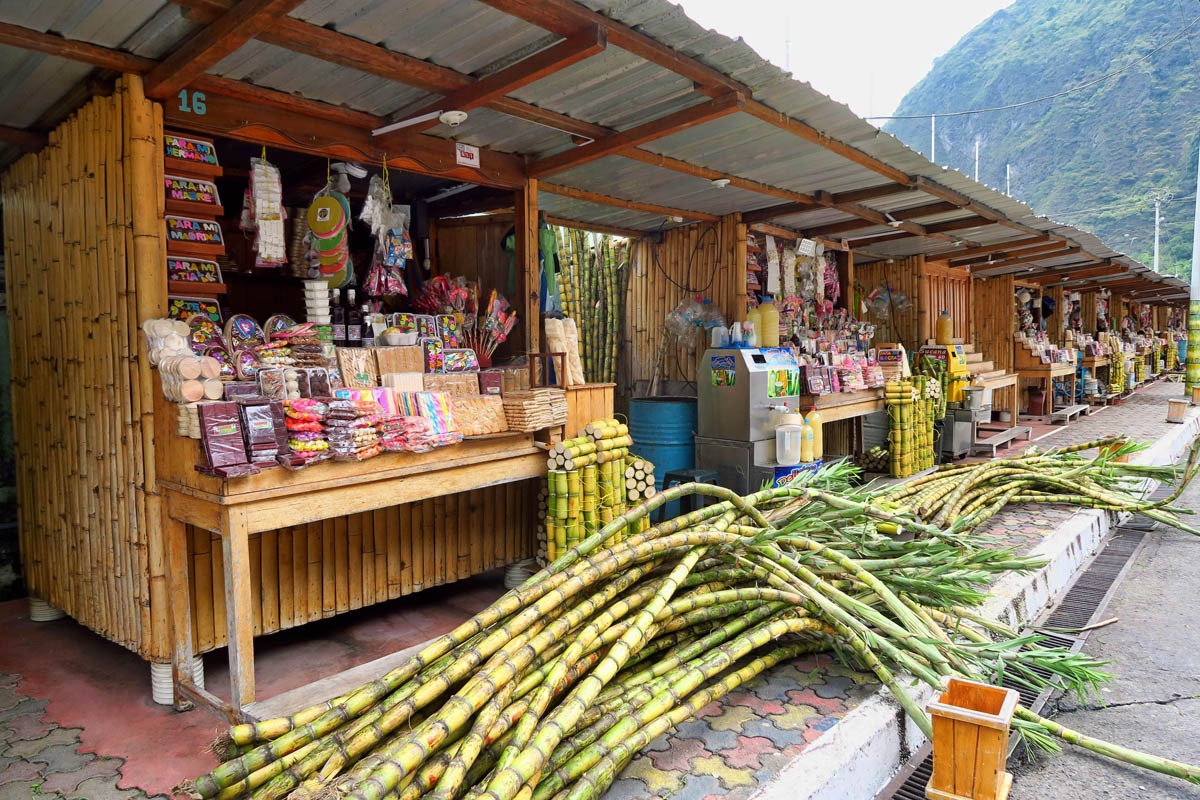 Sugar cane stands that have a machine for extracting juice for sale. 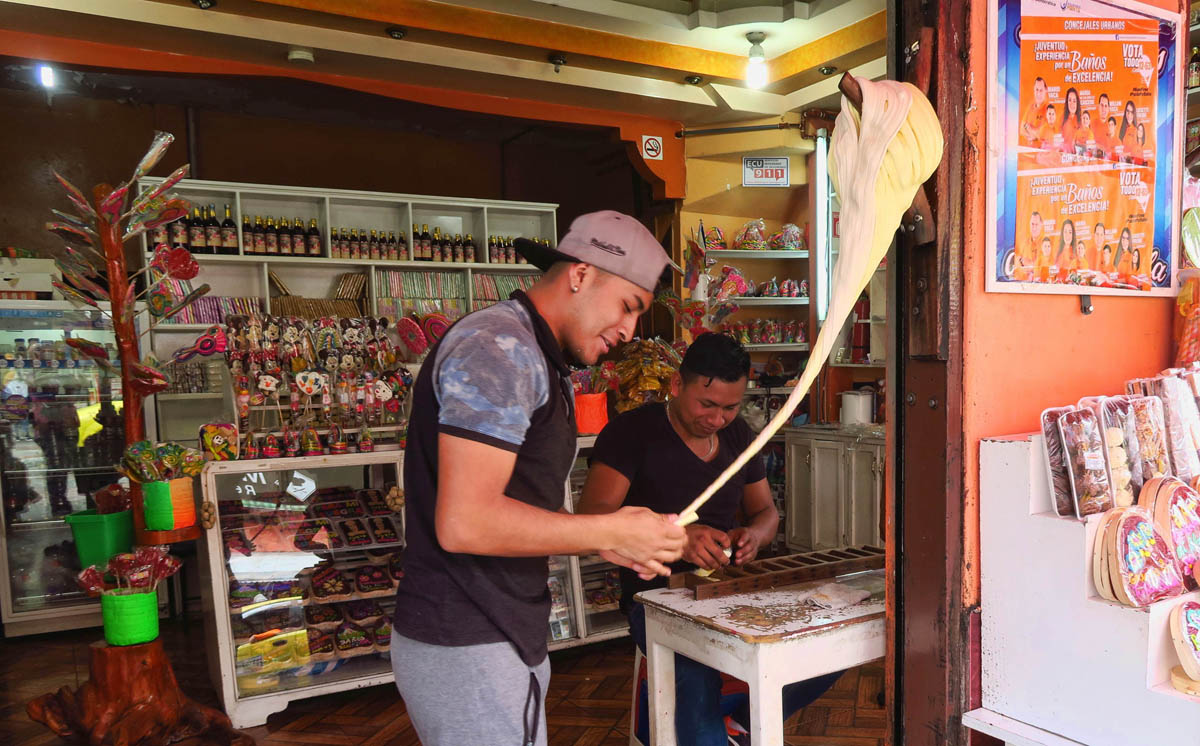 Melcocha, the local sugar cane taffy, made right in the storefront. The guy pulls, twists, and stretches the taffy, then loops it back up over the wooden peg repeatedly. Then he breaks it off in bite-size pieces which are wrapped in plastic. A dentist’s delight! 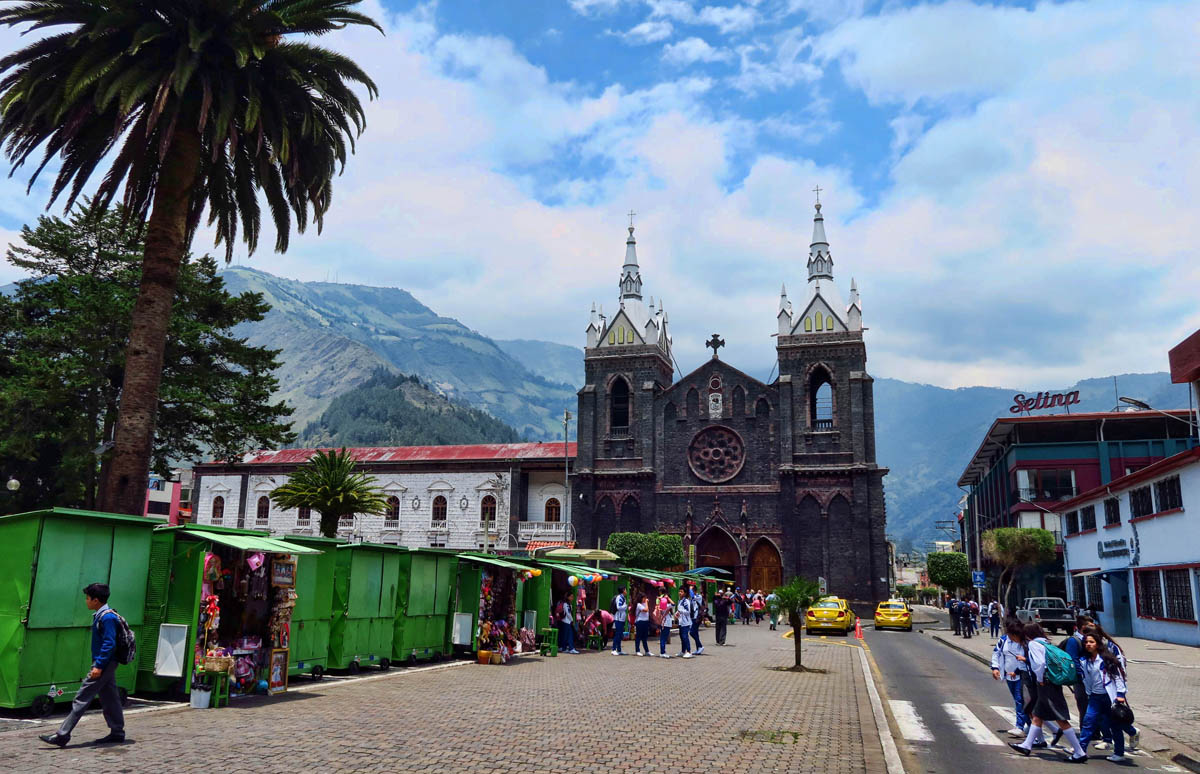 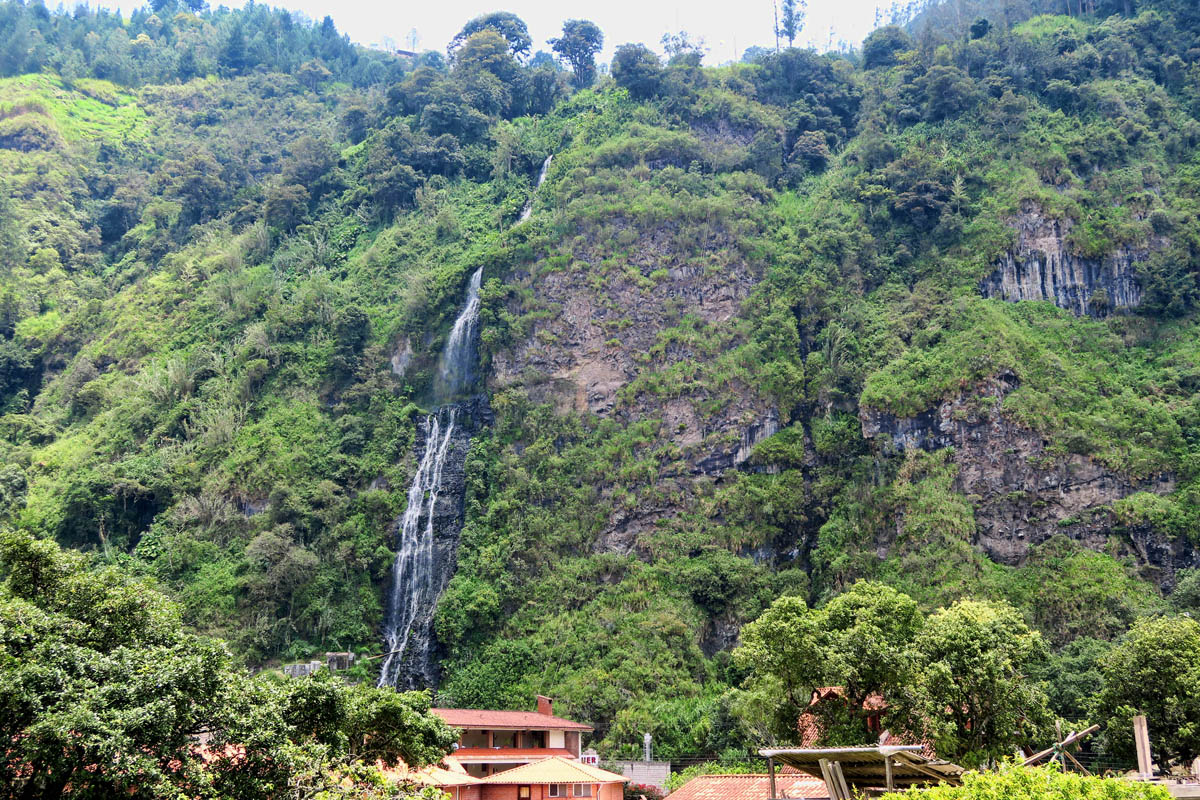 My hotel has a rooftop restaurant where breakfast is included. The Las Piscinas de la Virgen waterfall on the edge of town is part of the view. 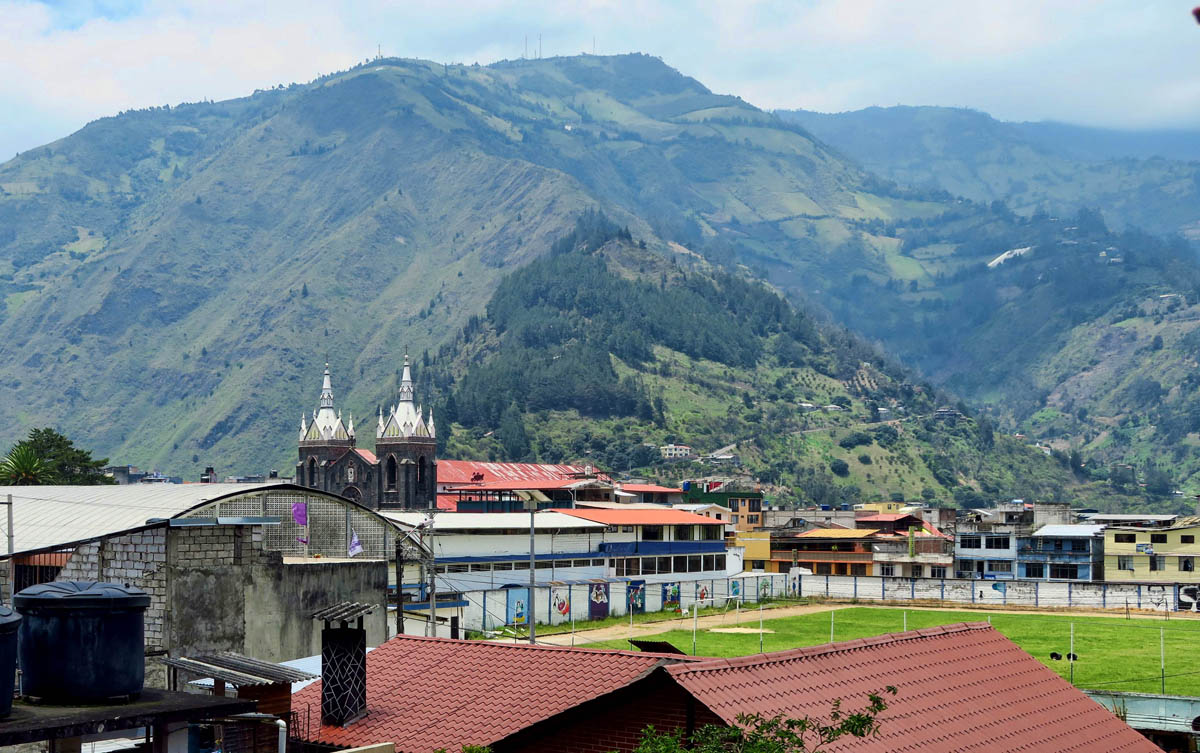 Looking out over the town from the hotel rooftop. 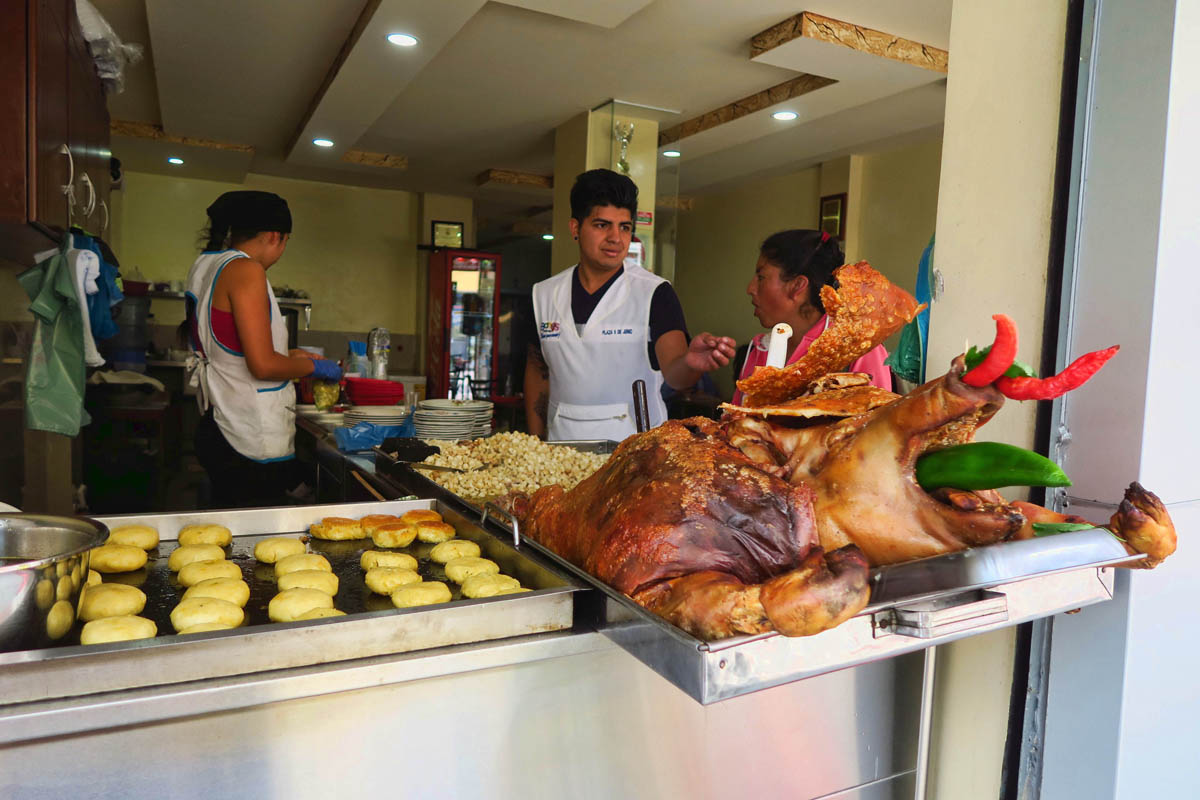 Nothing says “lunchtime” like a pig gagged by a pepper. 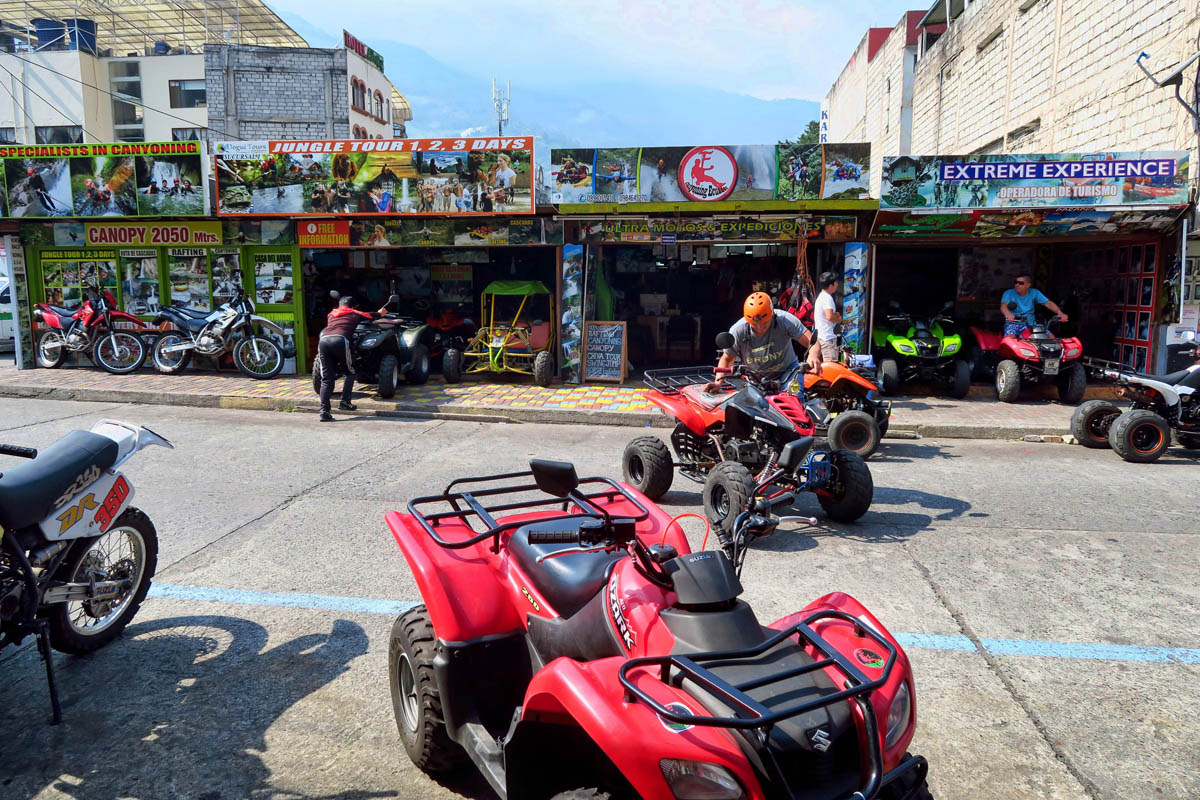 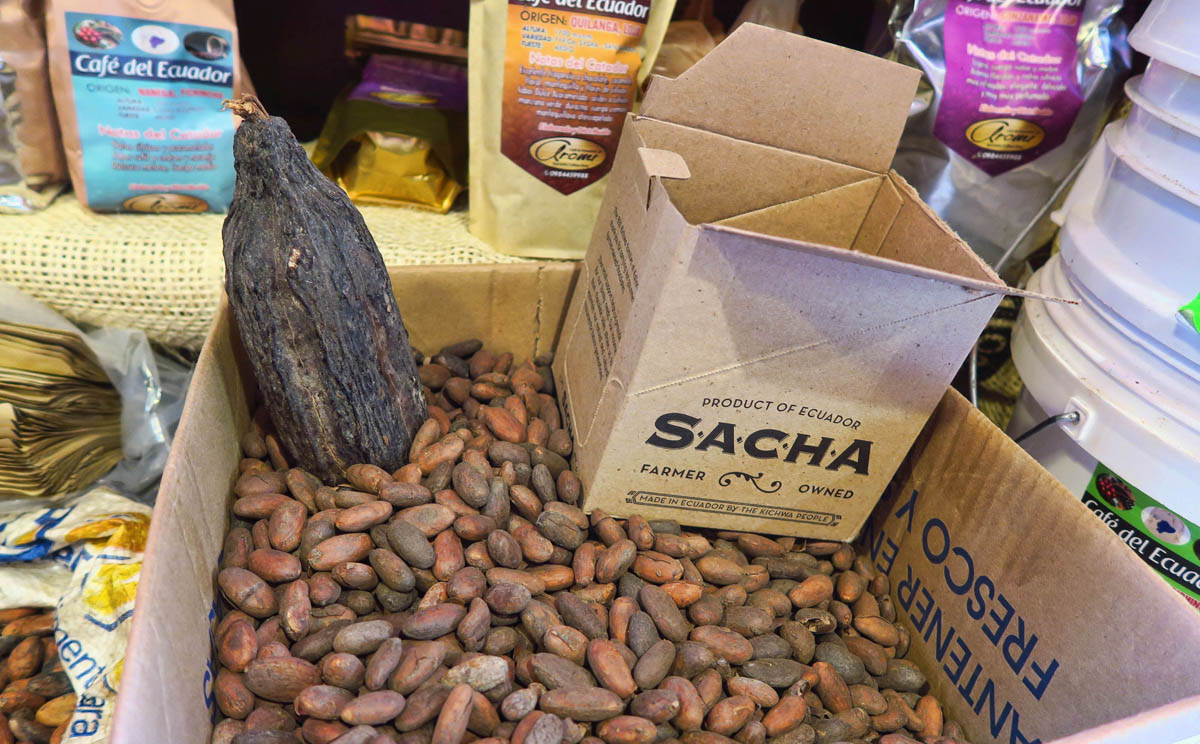 Ecuador is known for it’s cocoa beans, producing some of the highest quality cocoa in the world. 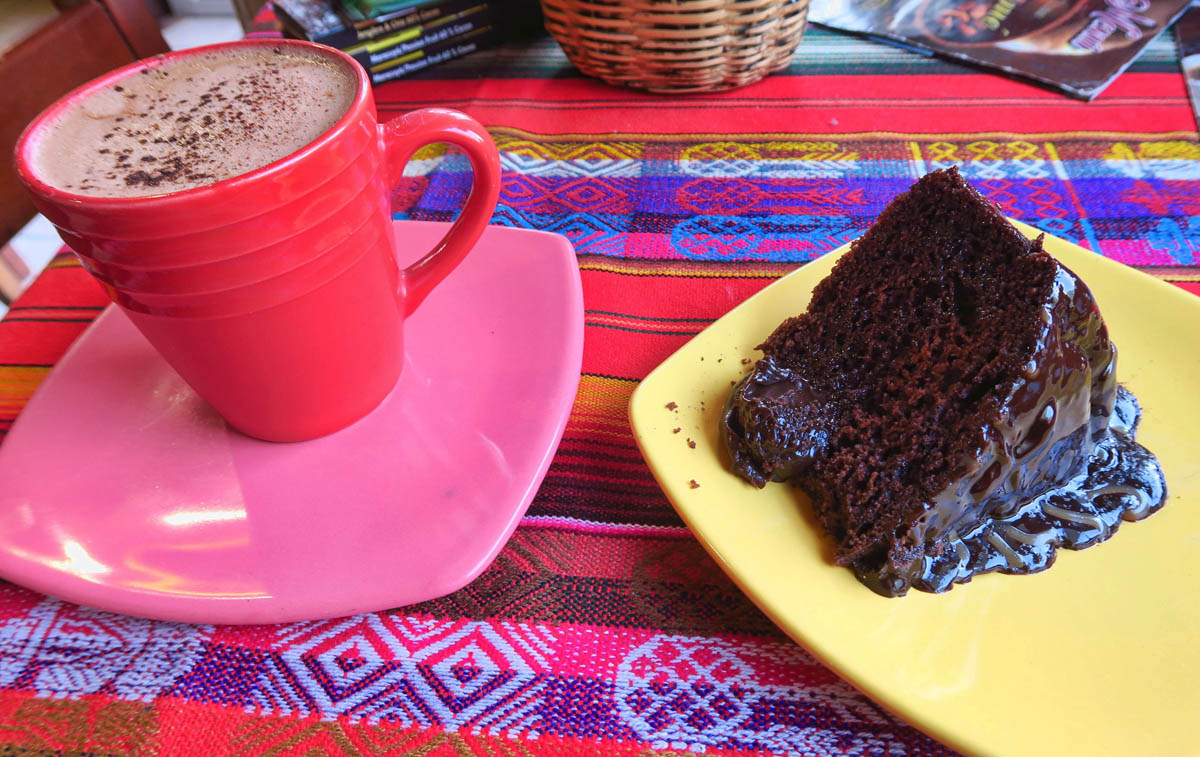 While there are tons of adventure activities in Baños, from zip lining to white water rafting, ATV touring and canyoning, the most obscure is “The swing at the edge of the world.” Located up a steep hill is the Casa del Arbol, or tree house, from which two cable swings are suspended from a lone bar. People, (mostly young people) line up to swing out over the edge of a massive cliff-side drop off. While a self-proclaimed adrenalin junkie always first in line for a fix, this one just didn’t feel right to me. Why is it that the older we get, the more we fear broken bones when in fact we with so many years behind us really have less to lose? 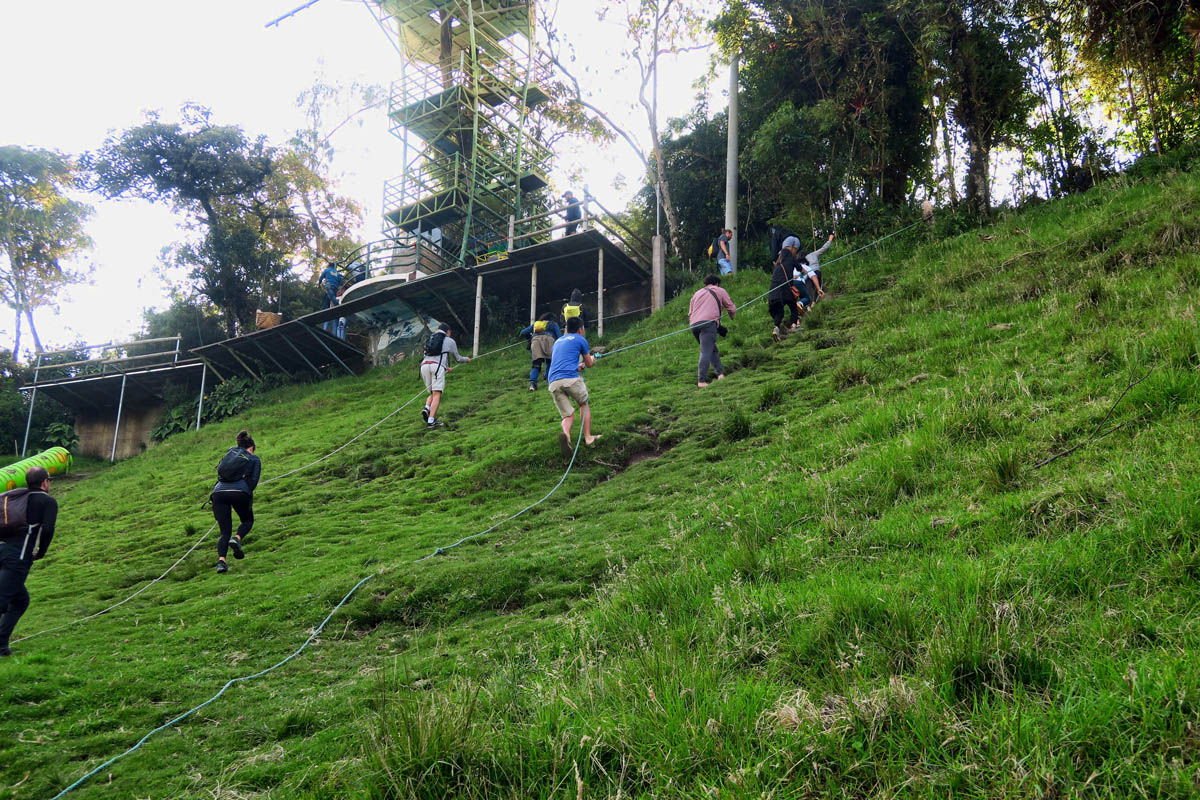 This hill doesn’t look steep enough to require a rope. I proved my own theory wrong, and got the grass stains to prove it! 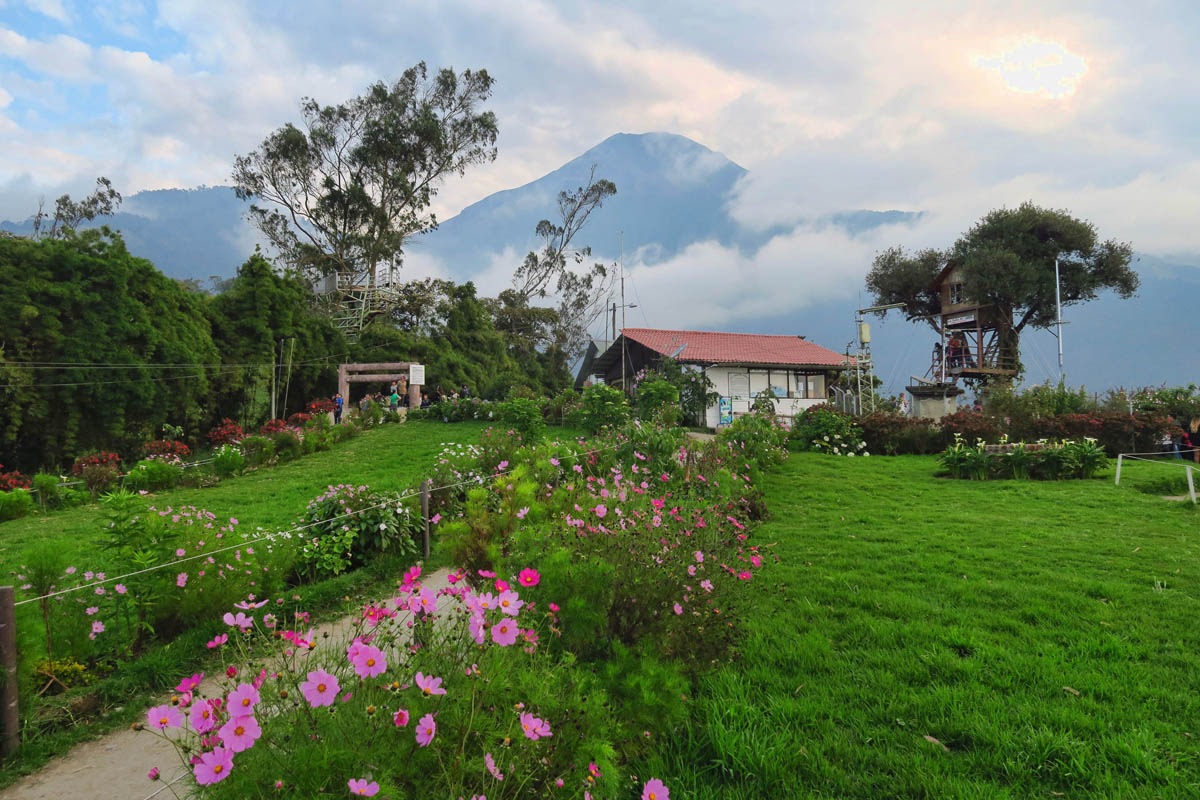 The Casa del Arbol (Tree House) complex has several swings and a zip line. Note the beautiful Tungurahua volcano in the background. 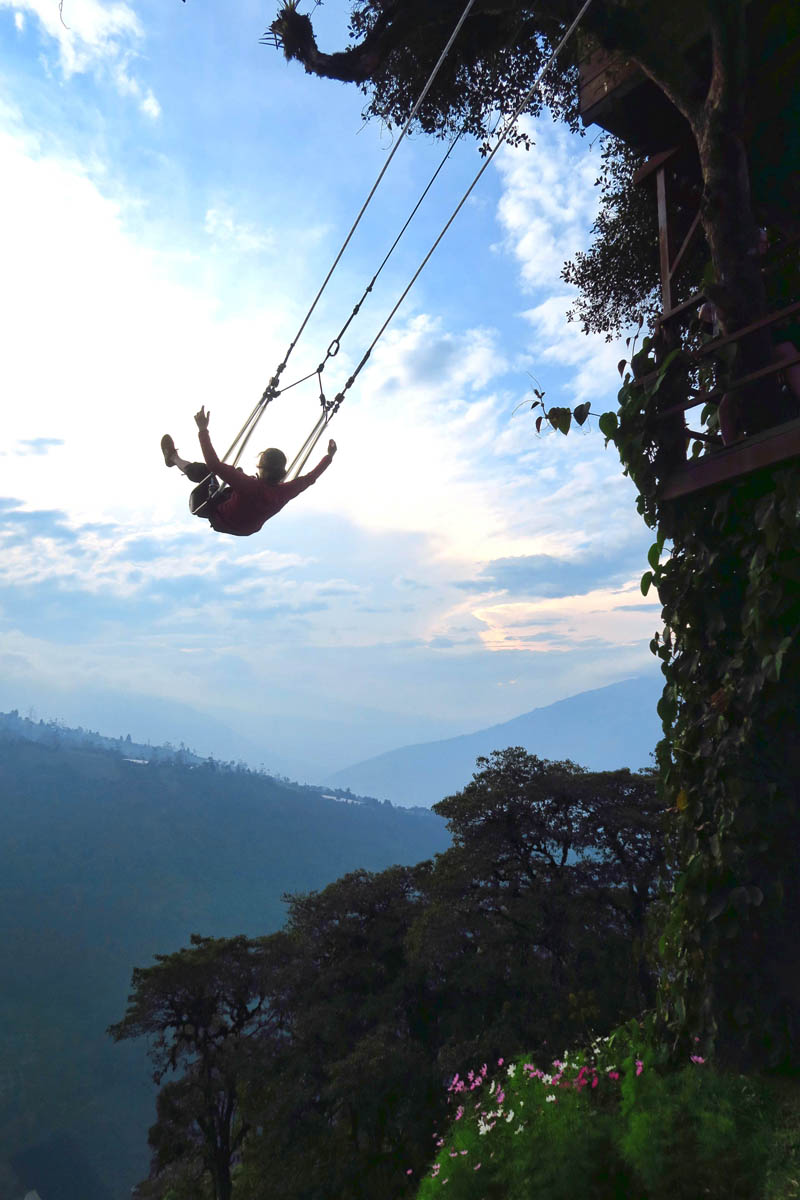 Despite how terrifying it looks, I regret not having done it… 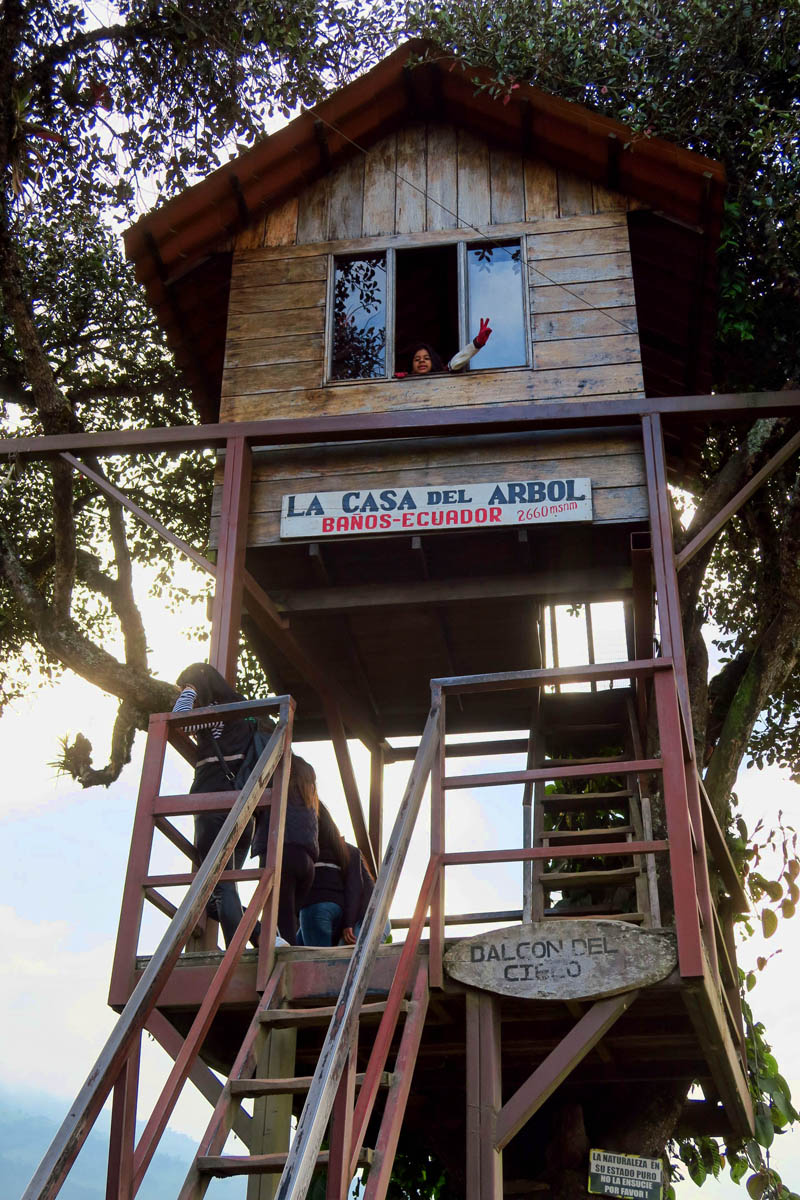 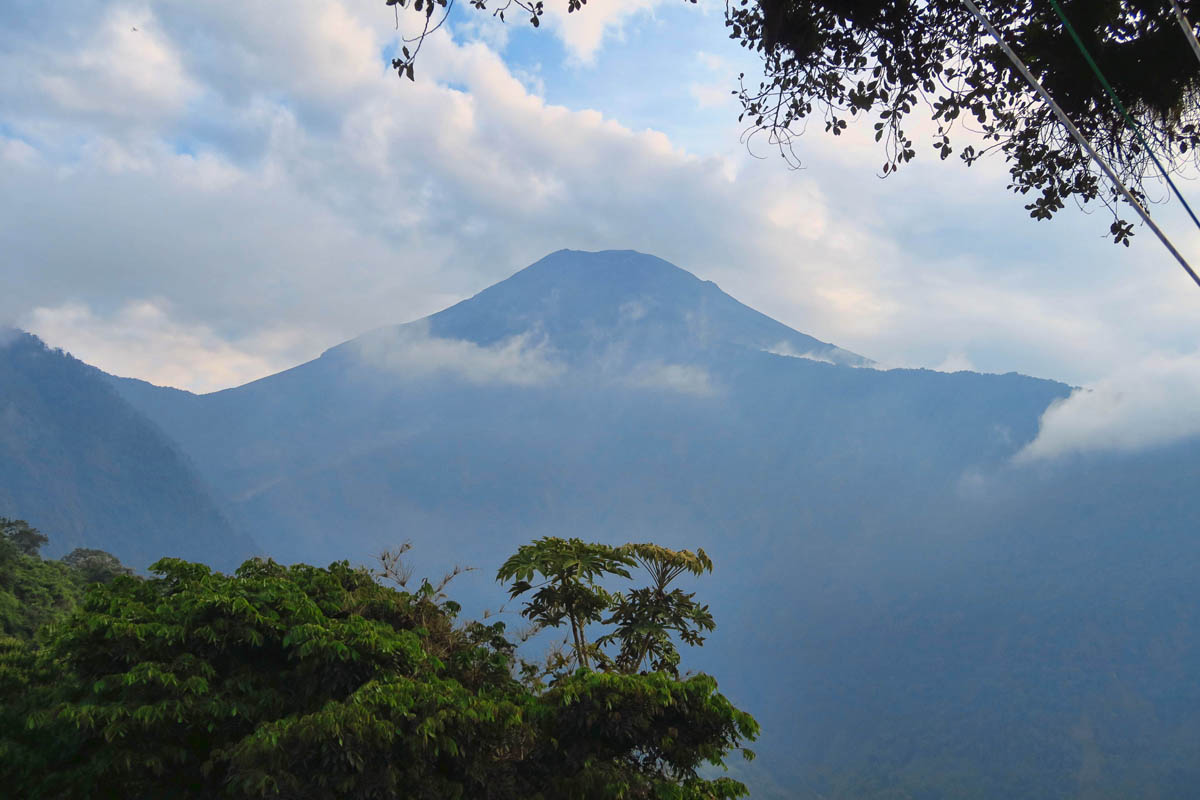 Baños is located in the foothills of the active Tungurahua volcano along Ecuador’s Avenue of Volcanoes. It became active once more in 1999 when residents of the town were evacuated. Since that time, it has had numerous eruptions, the most recent being 2014, with ash and smoke eruptions as recent as 2018. Since 2000, a new lava dome has been growing in its summit crater.

My lone “adventure” while in Baños was a trip down Rutas de las Cascadas, or Route of the Waterfalls, a highway that hugs the Río Pastaza canyon as it drops about 3,000 ft, passing more than a dozen waterfalls on the way. The highlight of this trail is El Pailón del Diablo, or Devil’s Cauldron, a 300 foot waterfall that gushes over vertical cliff walls. 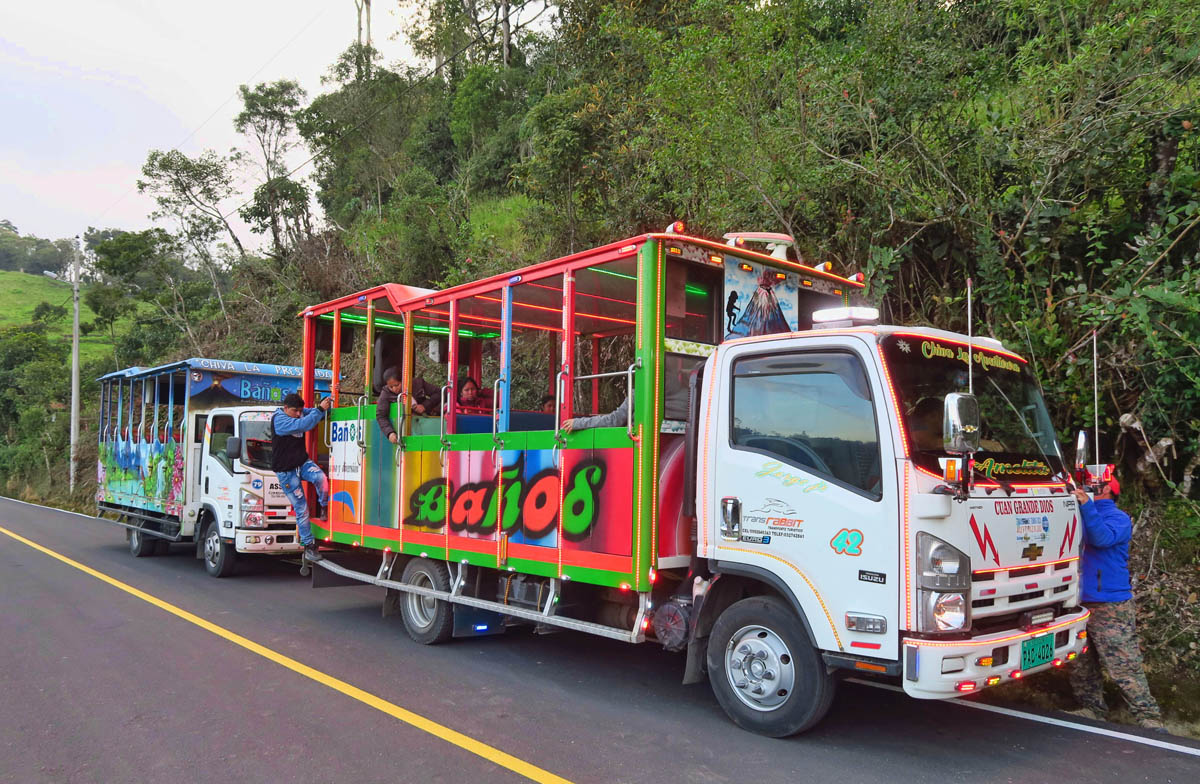 This is what’s known as a “Chiva Tour.” they have giant speakers blaring wild music. Reason enough to avoid the tour and take the public bus. 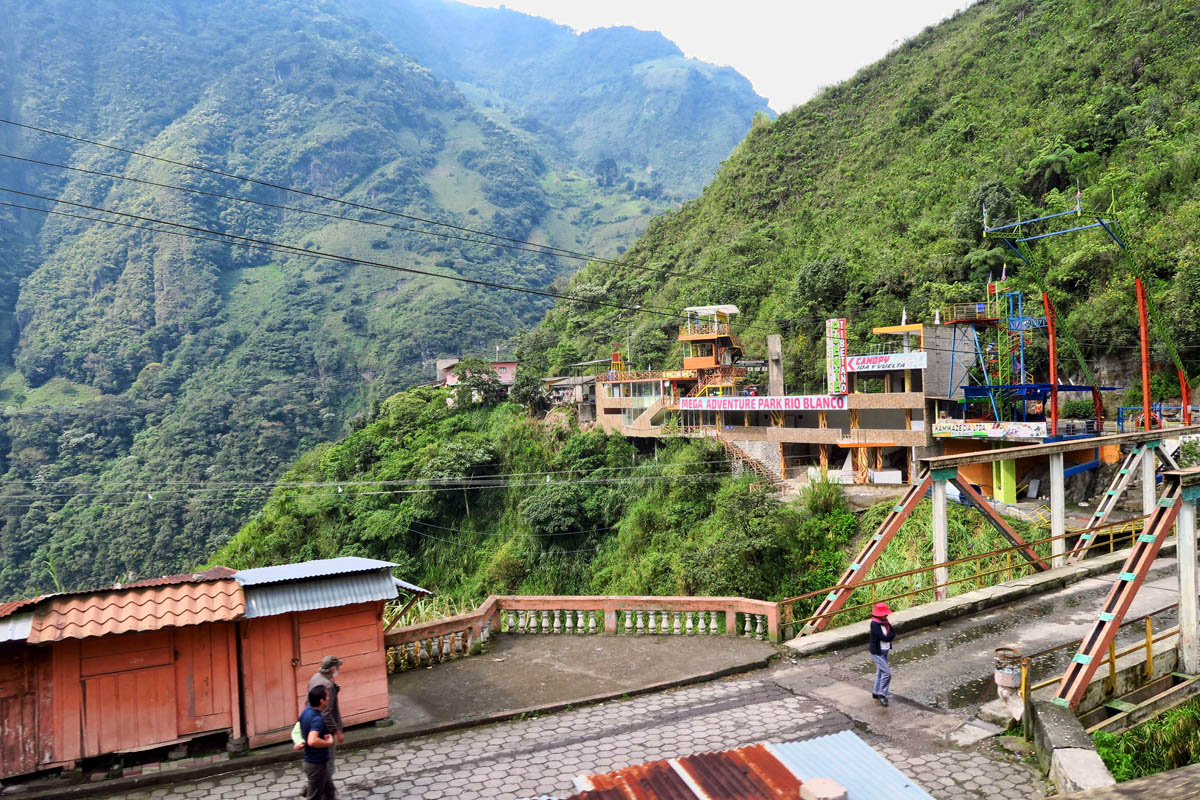 All along the Rio Pastaza canyon there is zip lining, bungee jumping, rafting, biking, and canyoning. 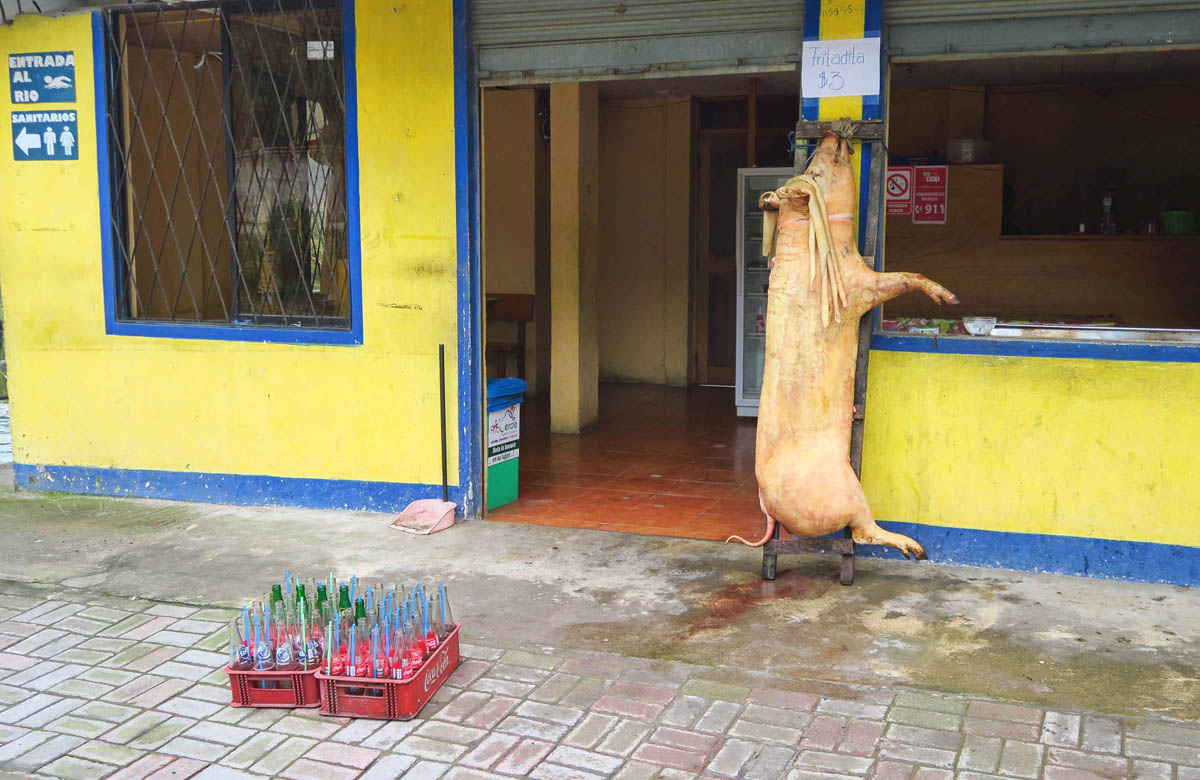 I took the public bus to Rio Verde, then walked to the falls entrance, passing this gruesome sight along the way.  Maybe it’s better to take the tour bus after all.  😉 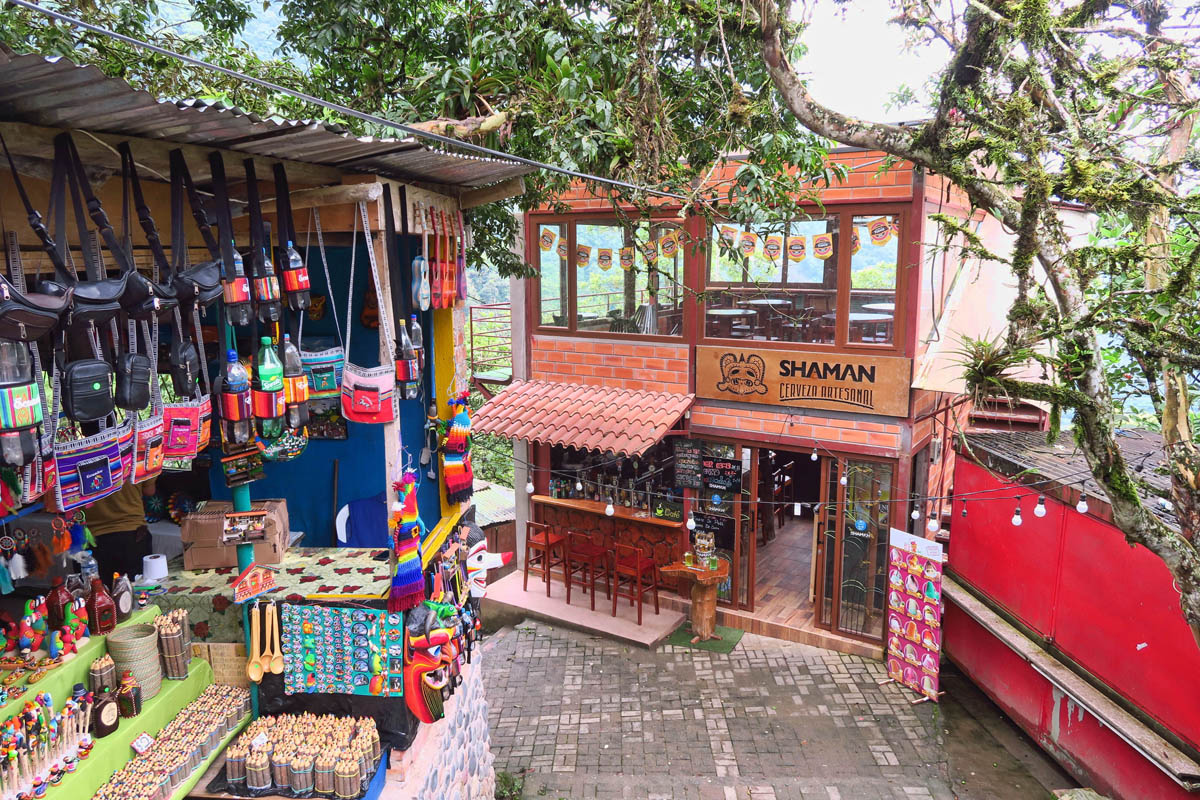 To reach the falls, one must walk through this corridor of shops. In front is the Shaman Cerveza Artesanal, one of Ecuador’s craft beer bars. 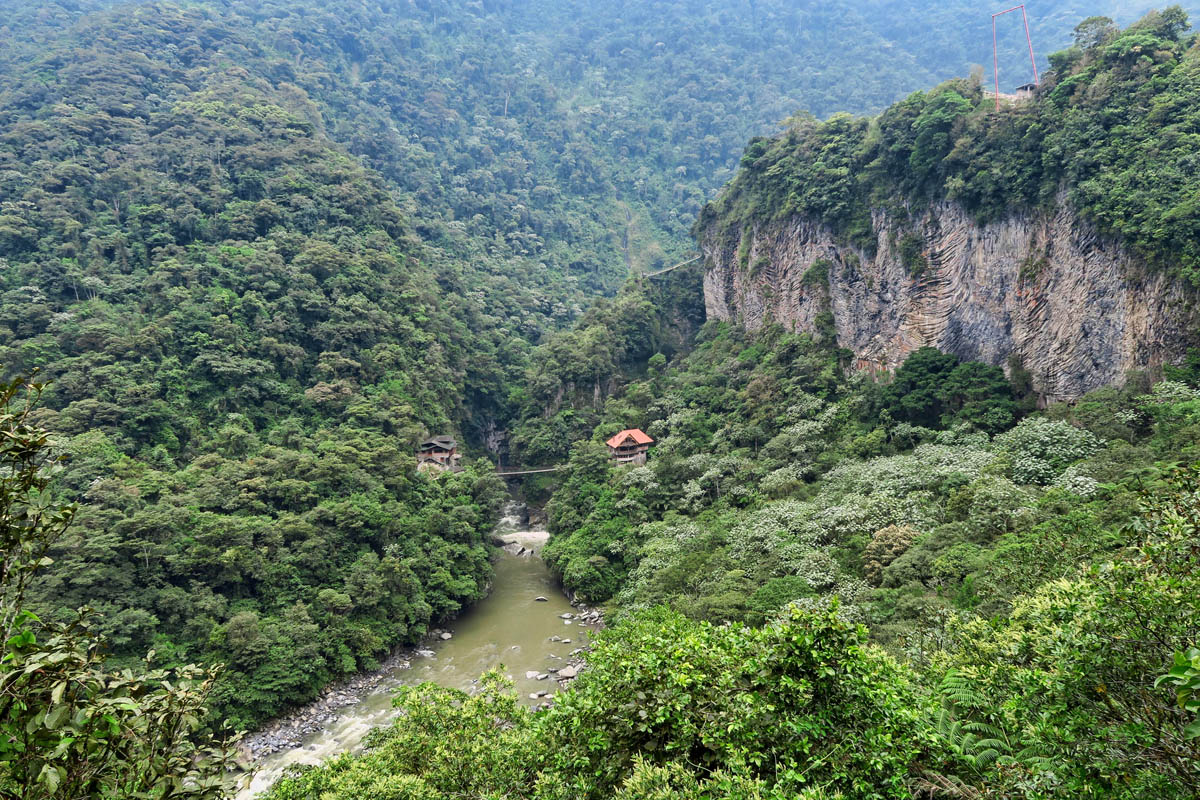 I am headed to that red roof building with the suspension bridge below. 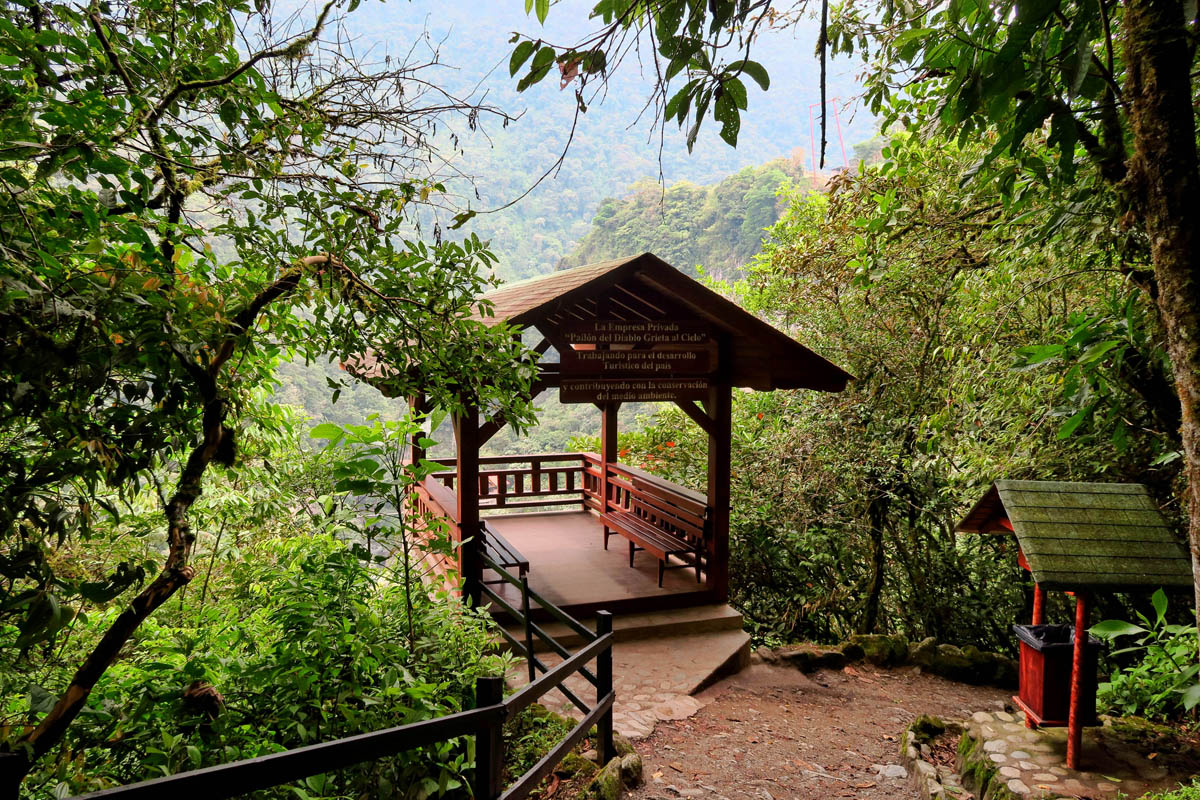 Nice waypoint along the way, which makes a great rest stop on the way back up! 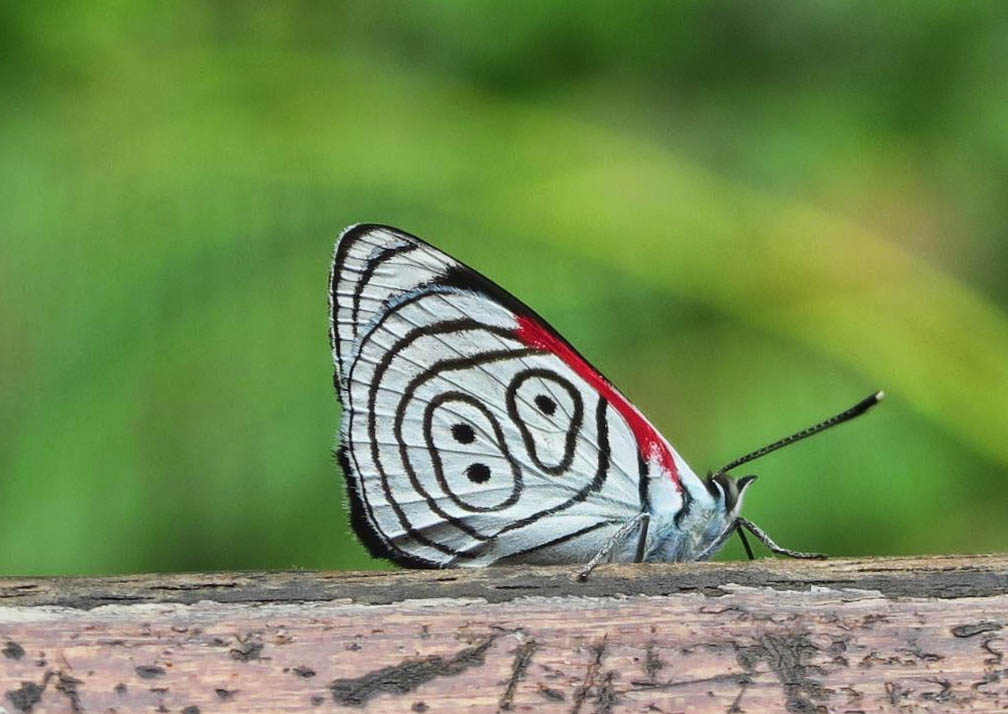 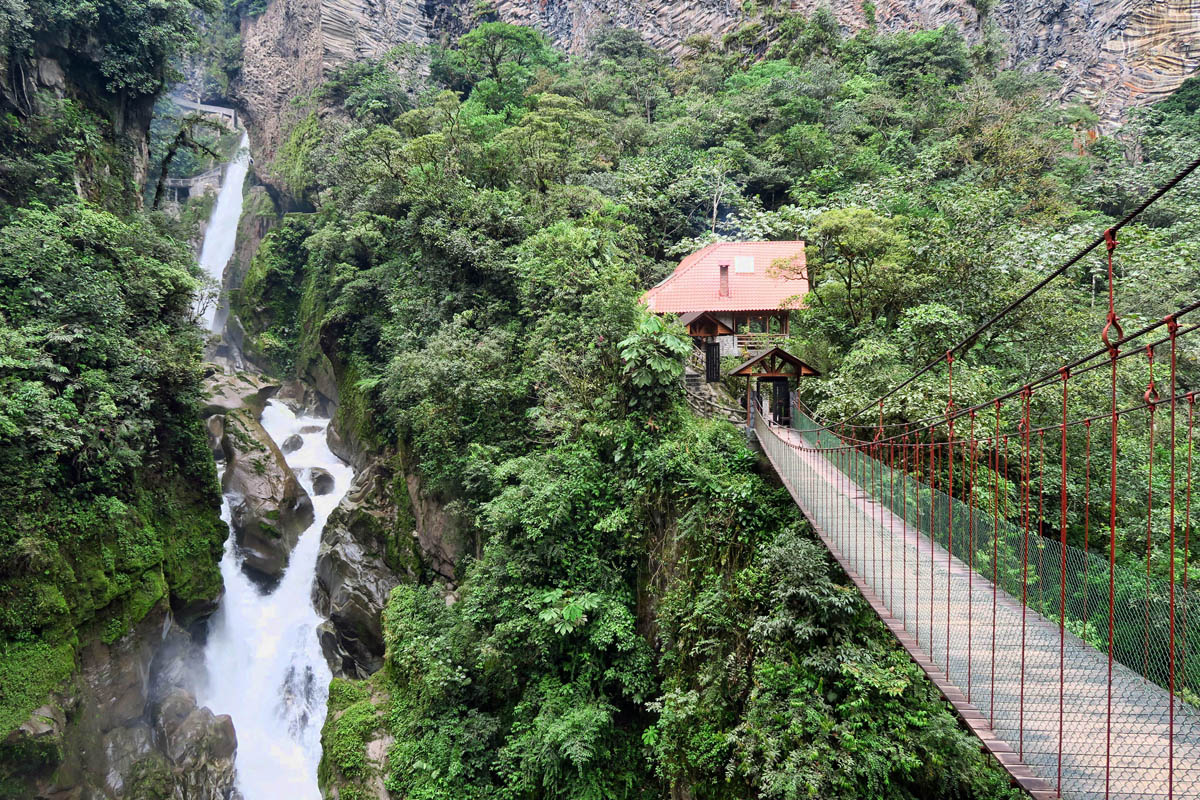 It’s a beautiful sight, but will it be worth the climb out? 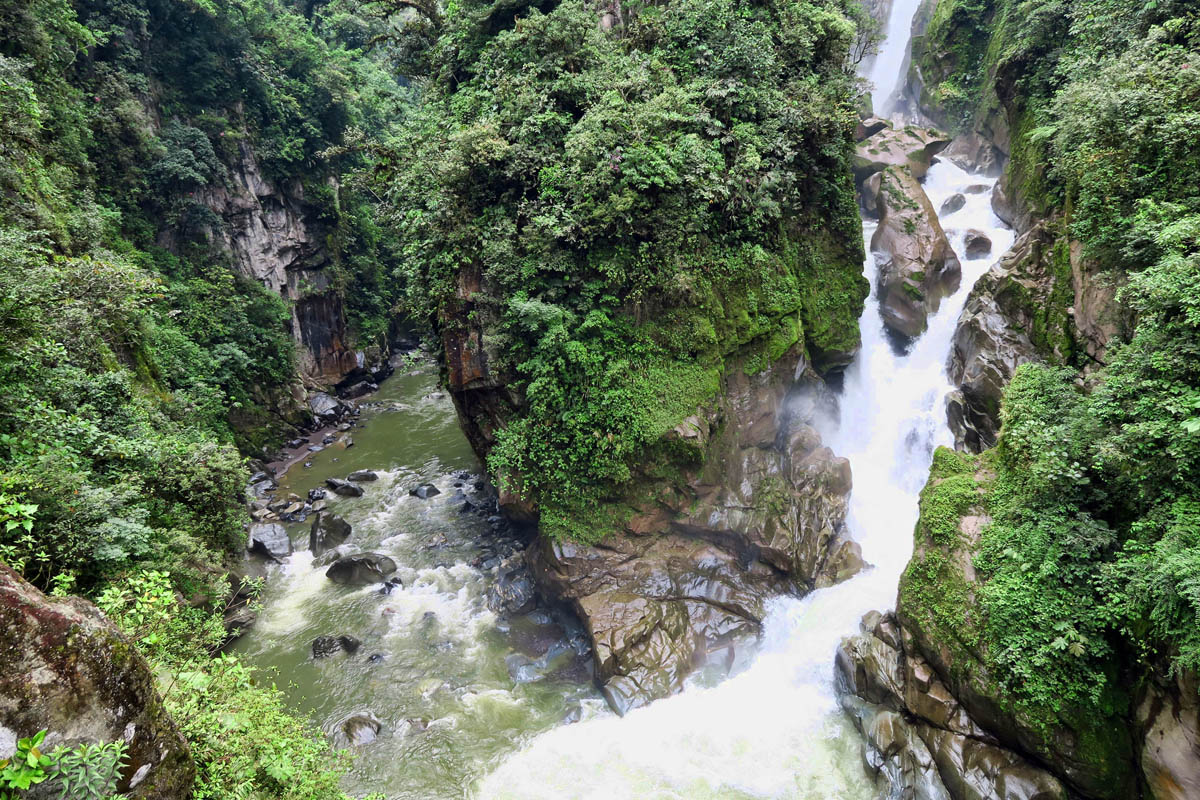 The Pailon del Diablo, or Devil’s Cauldron waterfall is actually three waterfalls, the highest of which is 300 ft. 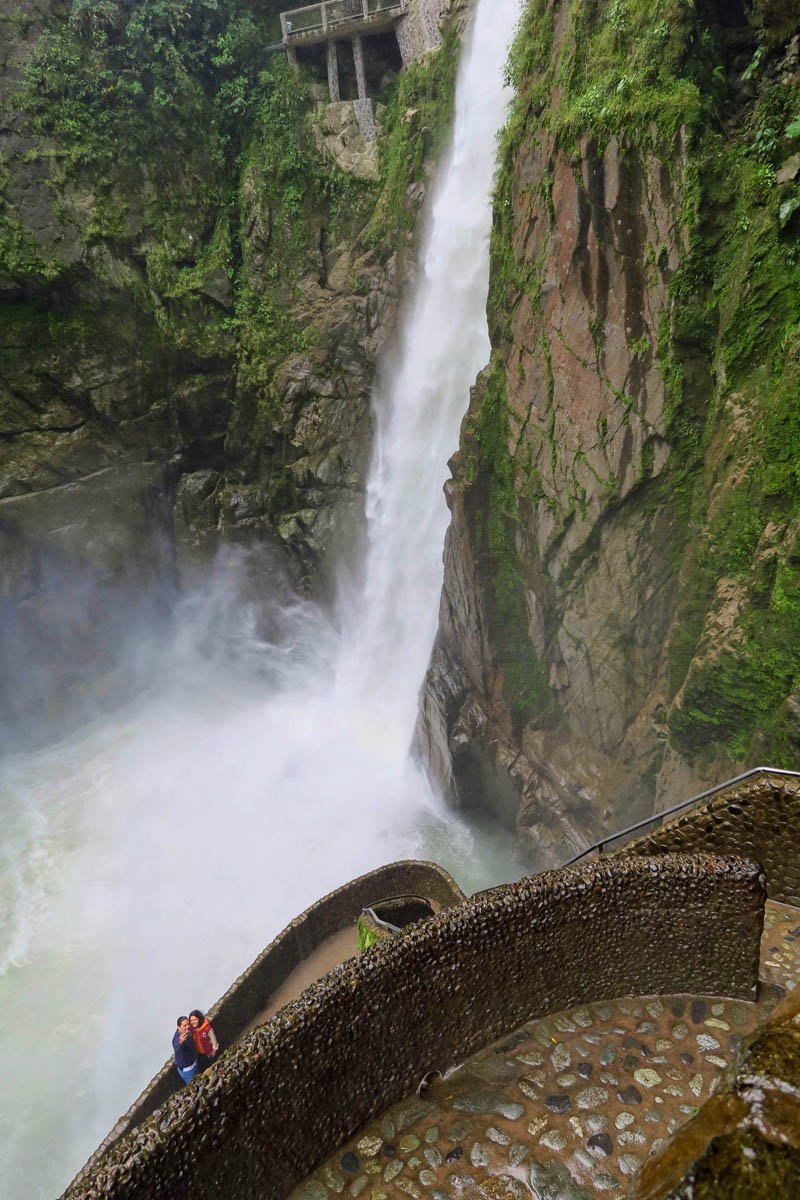 There is a labyrinth of walkways down to the base of the falls. (Note couple on lower level for scale.)

In the end, the reason that brought me here, the hot springs for which the town was named, was a bit of a disappointment. It was a decent soak, but nothing special.  Little more than some hot mineral water in a public pool complex with zero zen factor.  The Lonely Planet was right on the mixed bag…beautiful scenery, but short on relaxation. 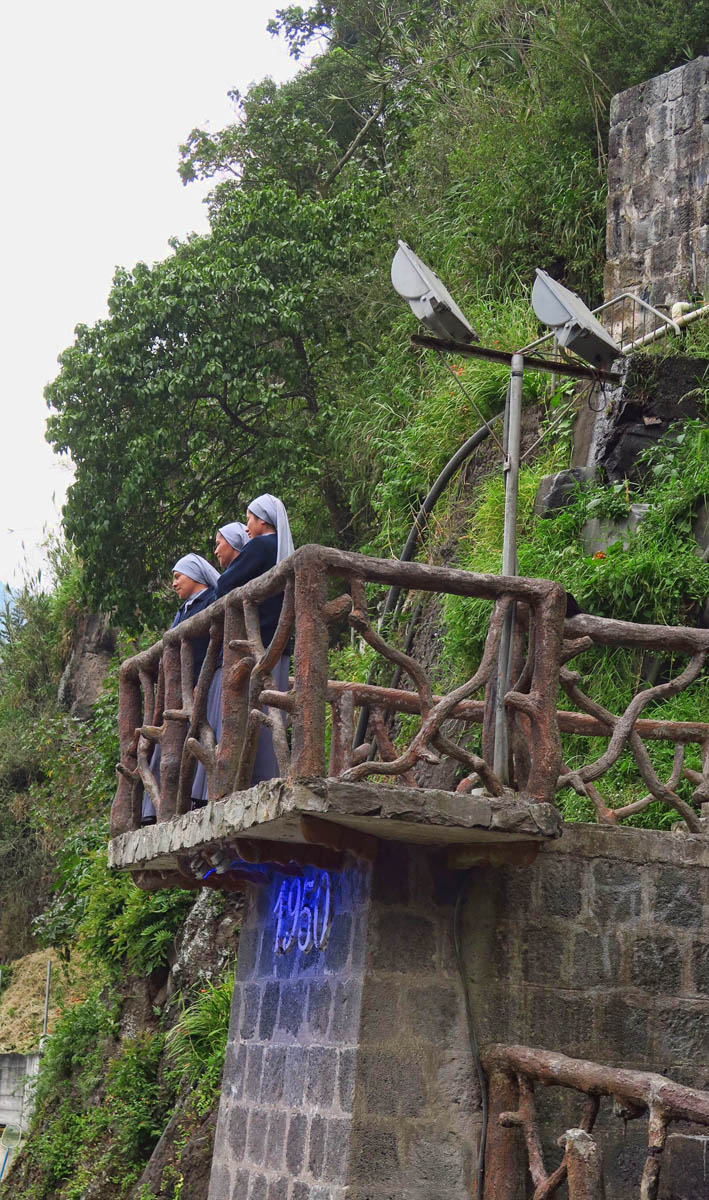 The sisters on a pilgrimage to the Las Piscinas de la Virgen waterfall, for which the adjacent hot springs are named, Cascada de Virgen. 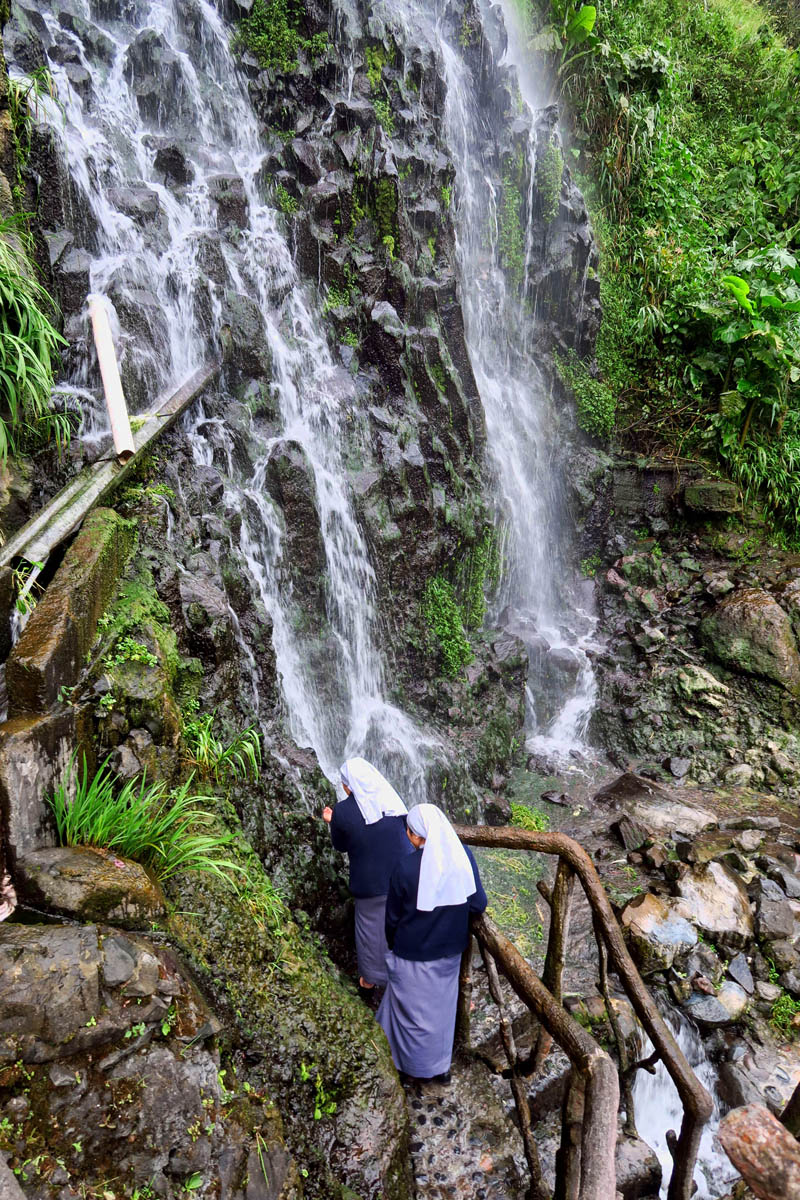 Some devout followers believe the story that the Virgin Mother appeared at the Las Piscinas de la Virgen waterfall, therefore the water is considered holy by some. 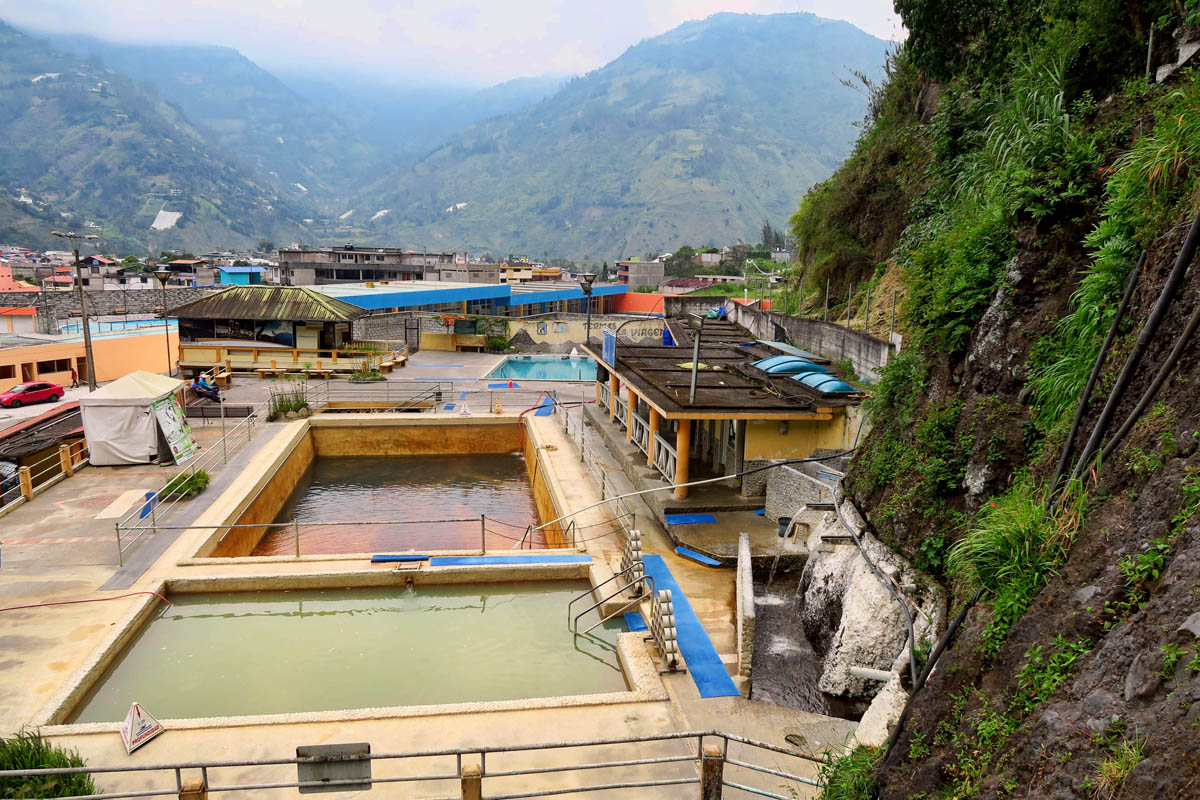 Overlooking the city hot springs. I didn’t go here. Though it’s closed while filling the pools in the photo, it was packed once it opened. 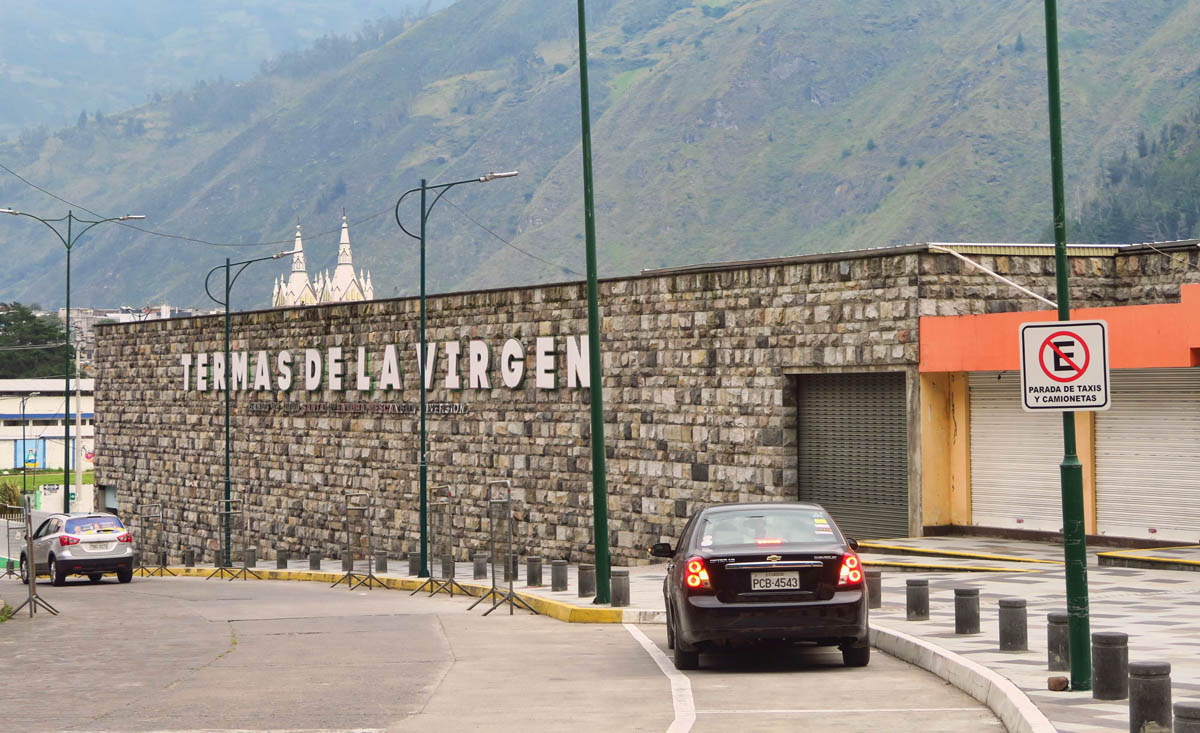 Tis is the new hot springs complex, Termas de la Virgen, named for the waterfalls just behind it. 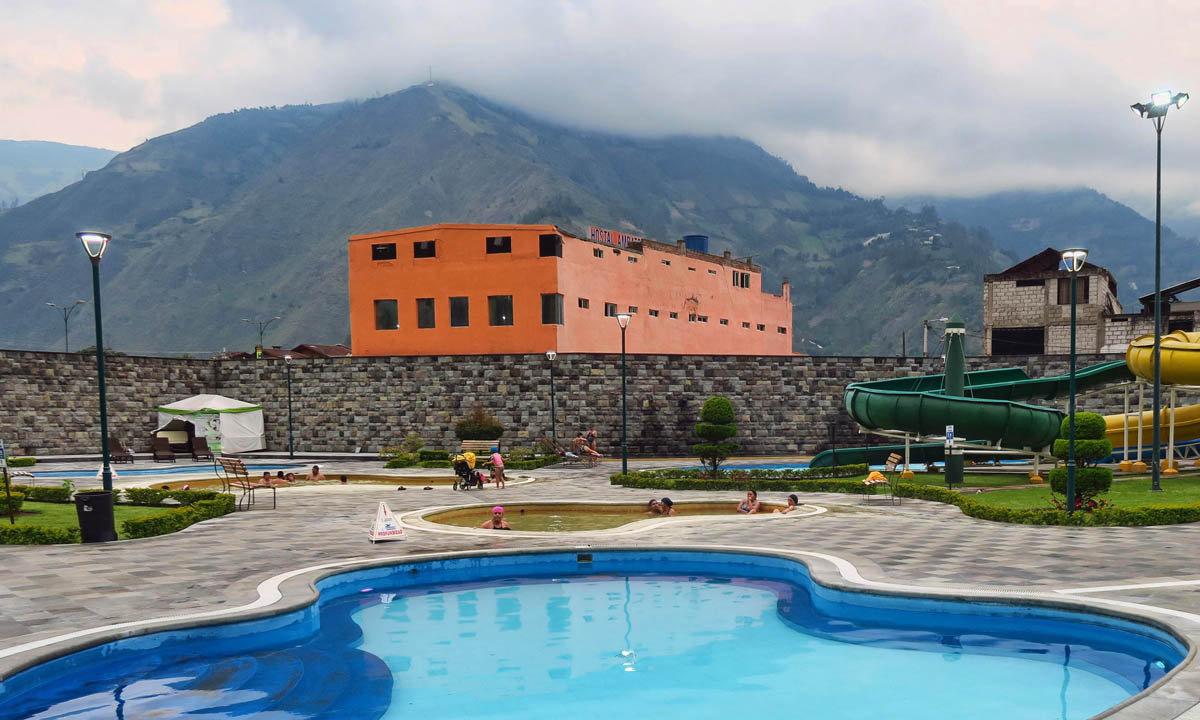 The two darker pools in the distance are the only mineral pools here. The remainder are just regular swimming pools.

Time to get back on the bus, Gus…