One of the many things I appreciate about the Wanderbus itinerary is the stops made along the way to patronize local merchants, immersing in the local culture. When it’s time for a bathroom break or a snack stop on the bus, where some tour operators might utilize gas stations and mini-markets, Wanderbus incorporates some type of local Ecuadorian experience. In most cases, these stops afford the chance to not only get a better understanding of Ecuadorian customs, but also try the local cuisine. The next leg of our journey will be making a stop in the Ozogoche Lakes region within Sangay National Park, where the local indigenous women will be preparing lunch for us. 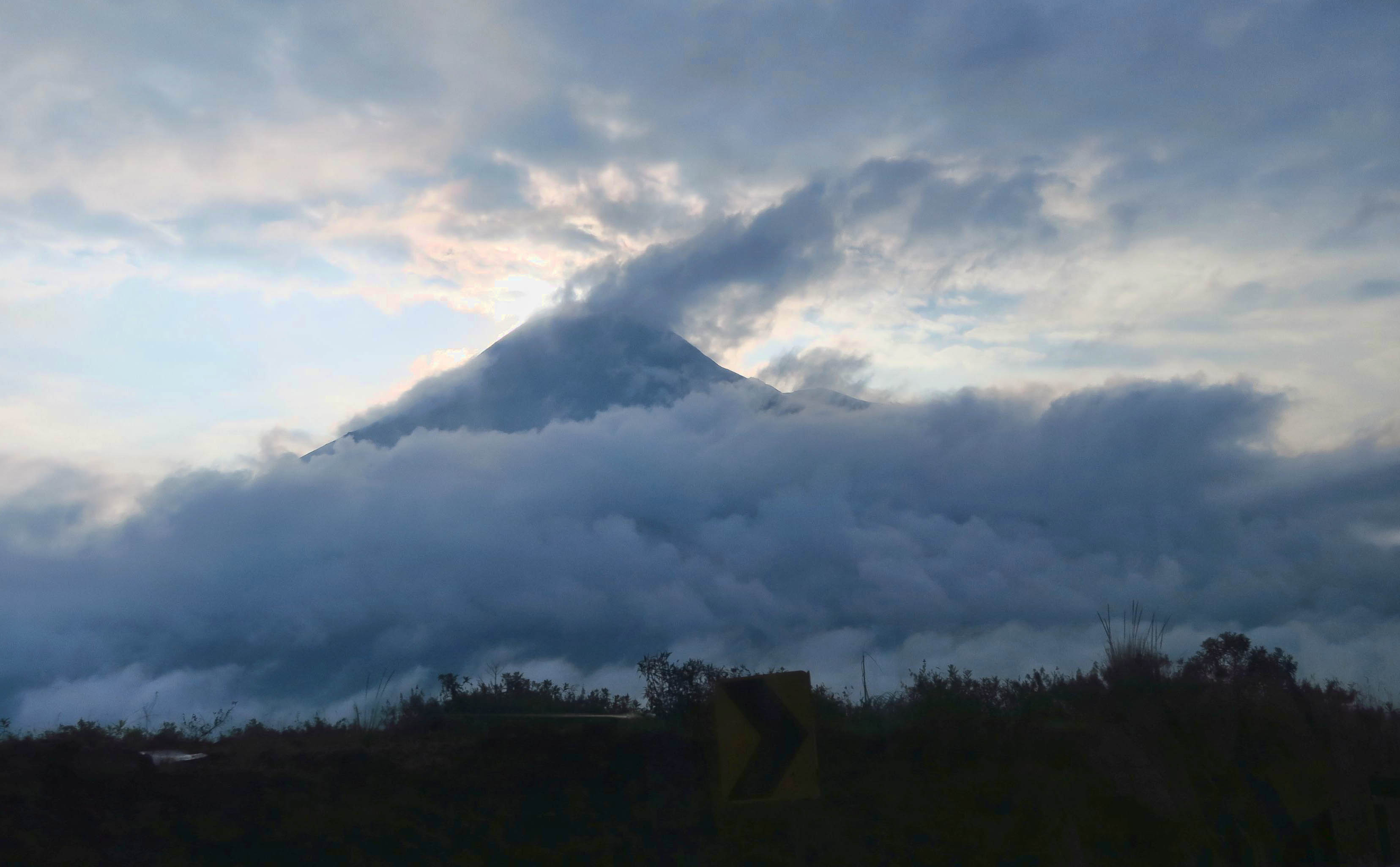 Traveling along the “Avenue of the Volcanoes” taken from the Wanderbus window. 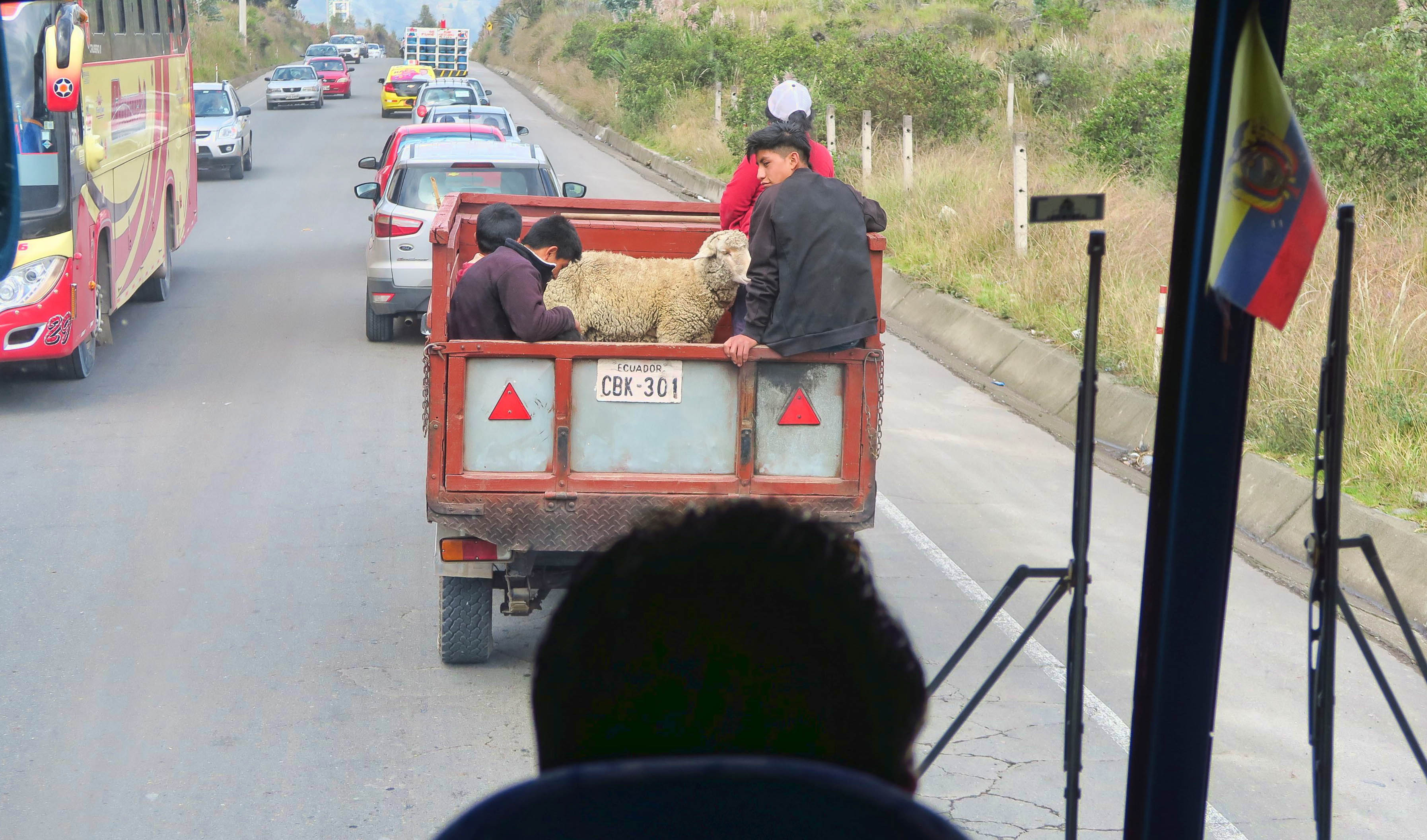 This line of cars is for the market, where likely this sheep will be making an appearance. 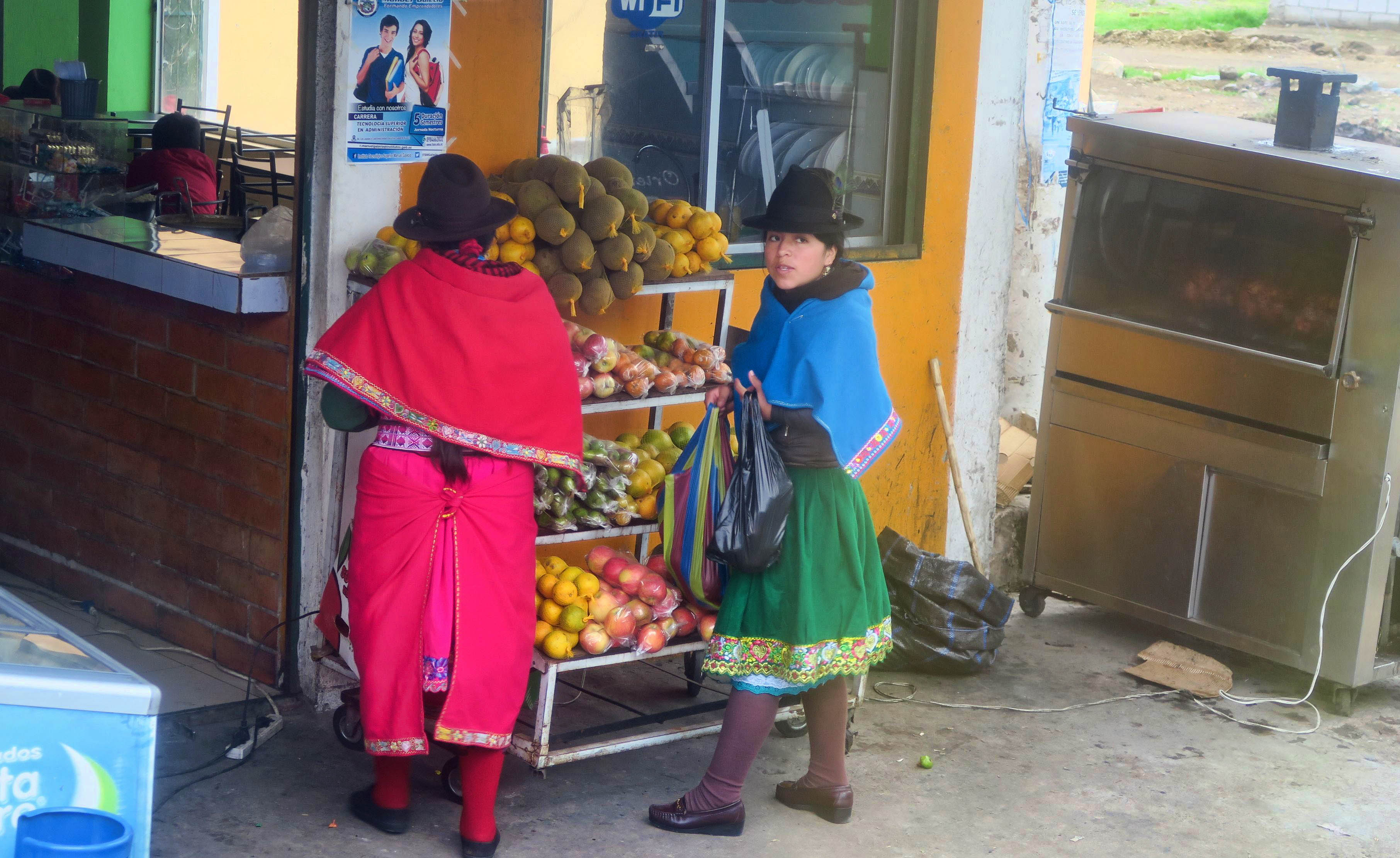 Indigenous women in small roadside market (I always ask first, but this one was taken from Wanderbus window)

But before I move on to the next stop, I want to say a word about Ecuadorian food. Long time followers of this blog know I tend to be a bit of a  “foodie,” and typically include photos of foods tried along the way. A couple of those followers have also noticed the posts from Ecuador have been lacking in the food feature. There’s a reason for that. I find the food in Ecuador to be pretty bleak. It’s tough finding variety, and the quality of restaurant food is subpar. Seems everything comes with a big serving of extra large hominy called “mote,” which if I never see again in my life it will be too soon.

There seem to be a disproportionate number of pizza restaurants catering to the tourist trade, but never before have I walked off leaving a half-eaten pizza behind, until Ecuador. I was speaking with an Ecuadorian woman who lived in the States for a few years. She said the standing joke is, “If you want to close a restaurant, hire an Ecuadorian chef.” 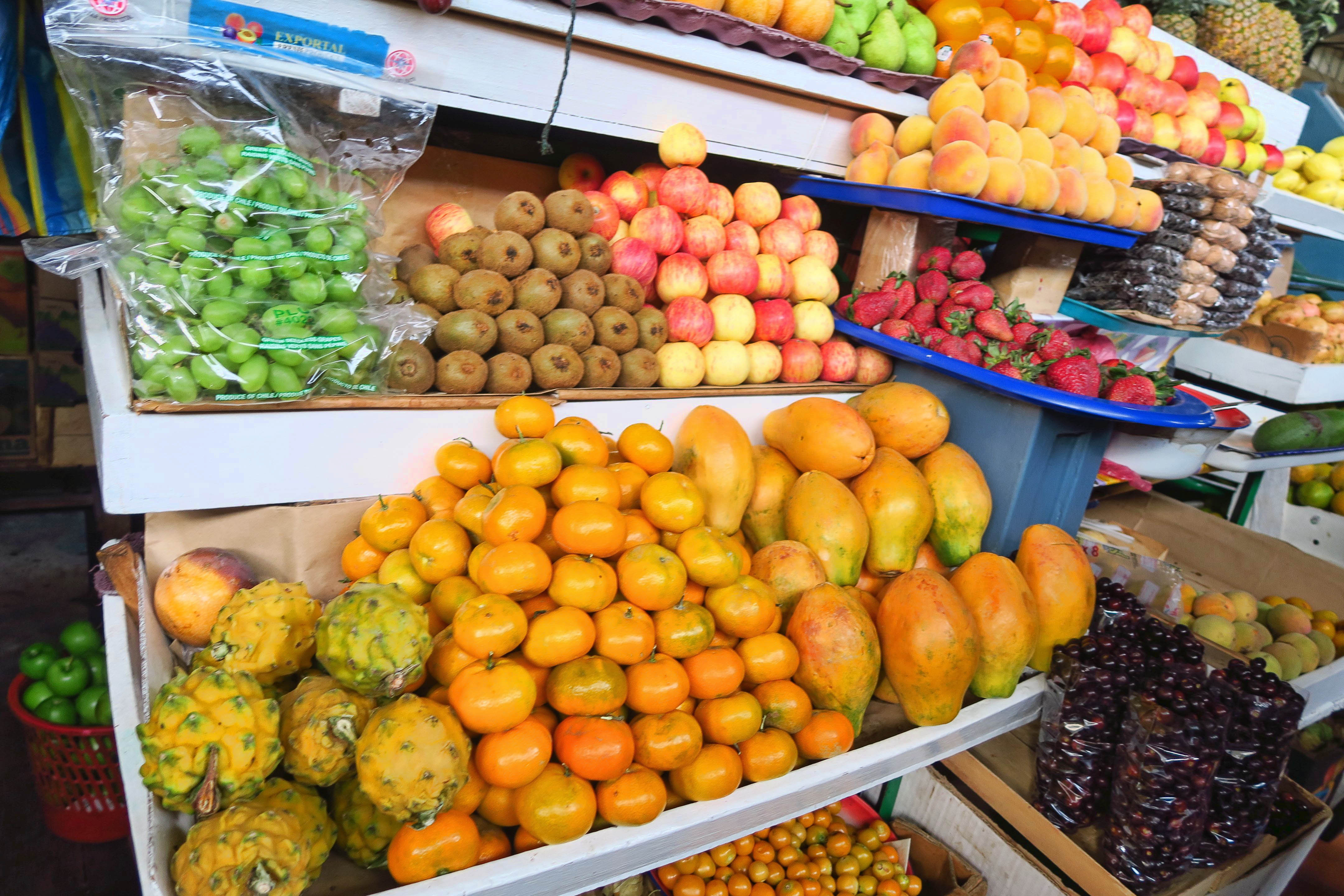 We stop at the Mercado la Merced, local market in Riobamba where our guide Stephanie gives us a tour and we sample some of the many fruits found in Ecuador. 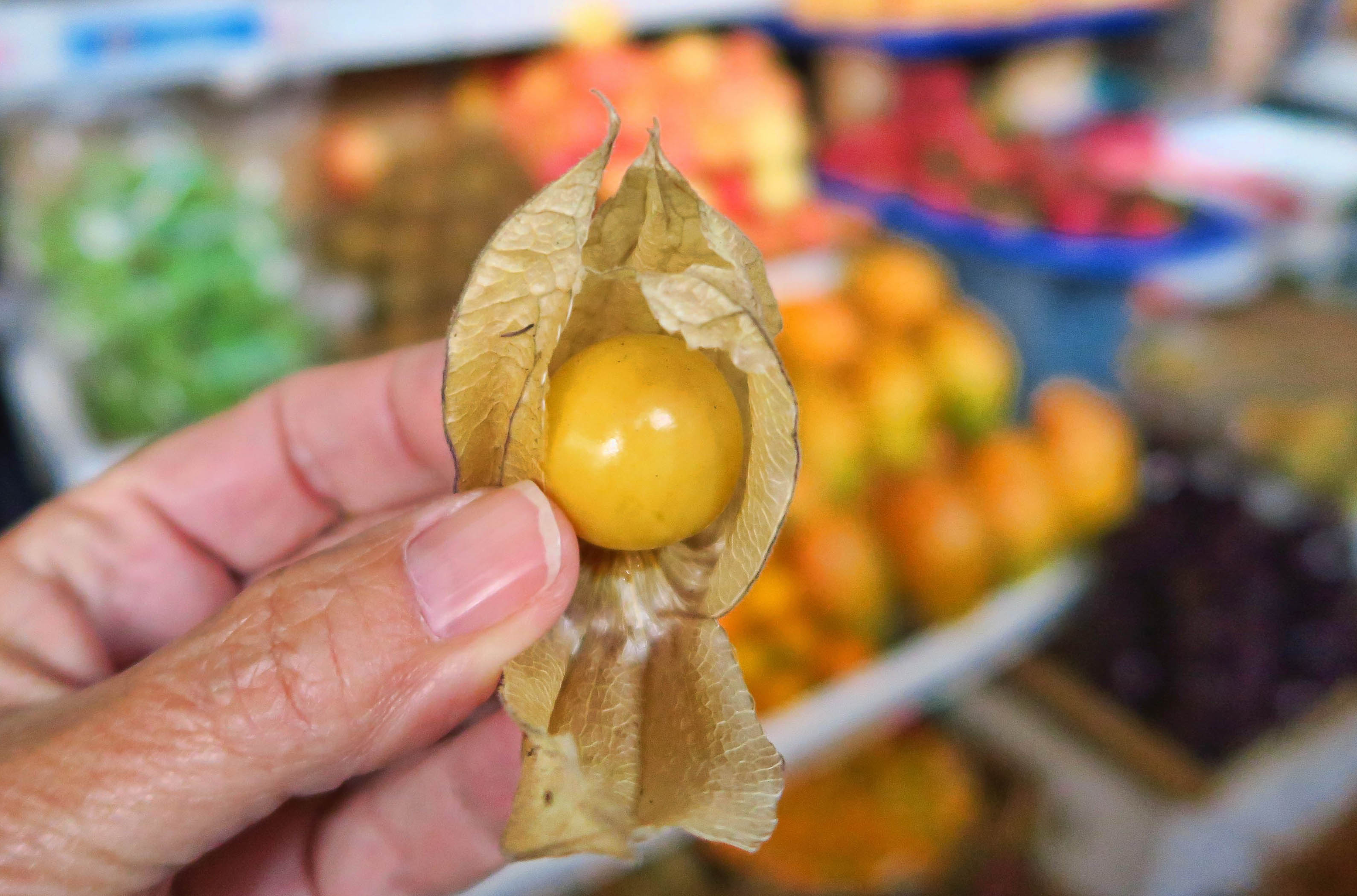 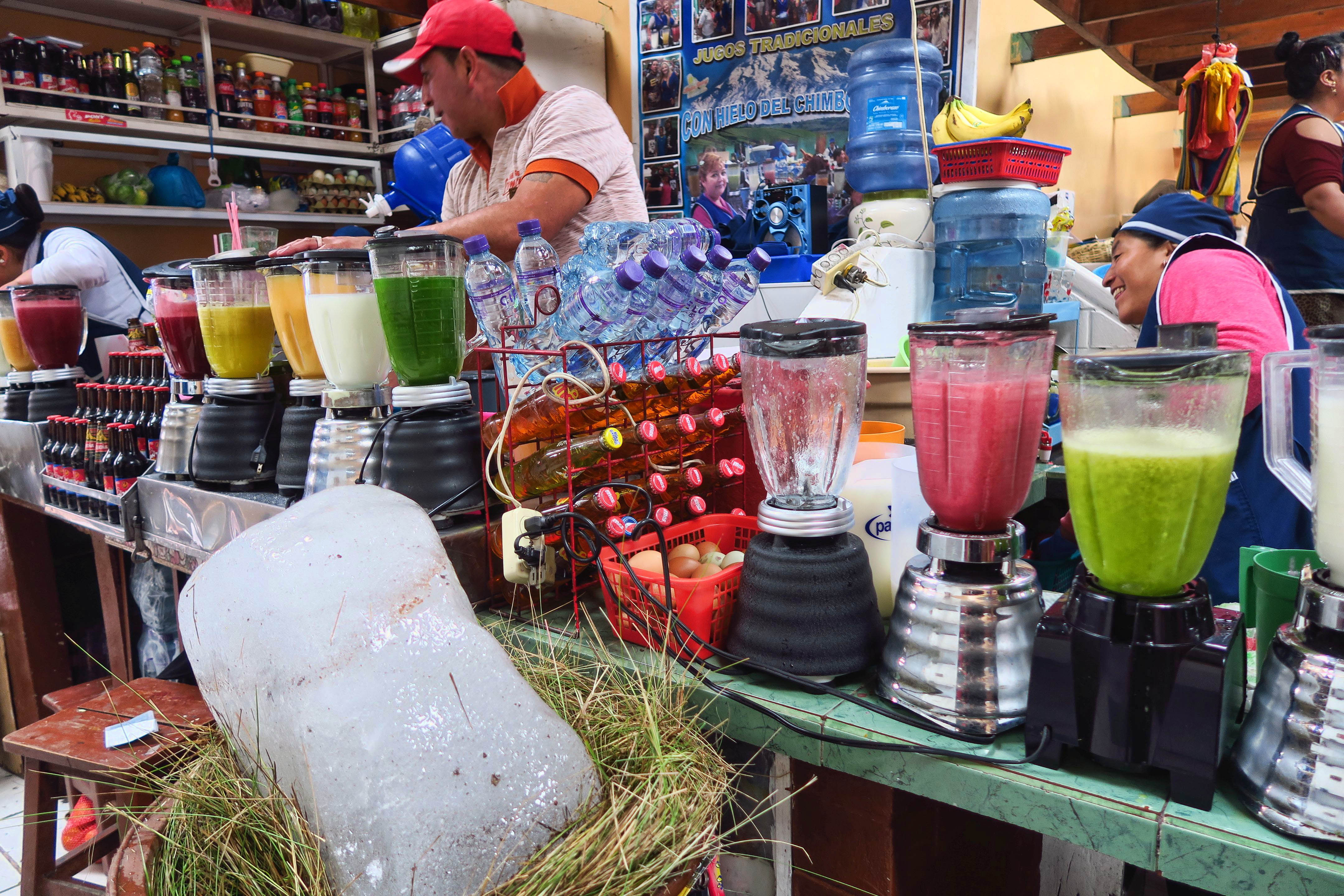 One can also obtain a variety of juices in the market, made with ice from the Tungurahua Volcano (block of ice in forefront collected from volcano, believed to have special therapeutic qualities.) 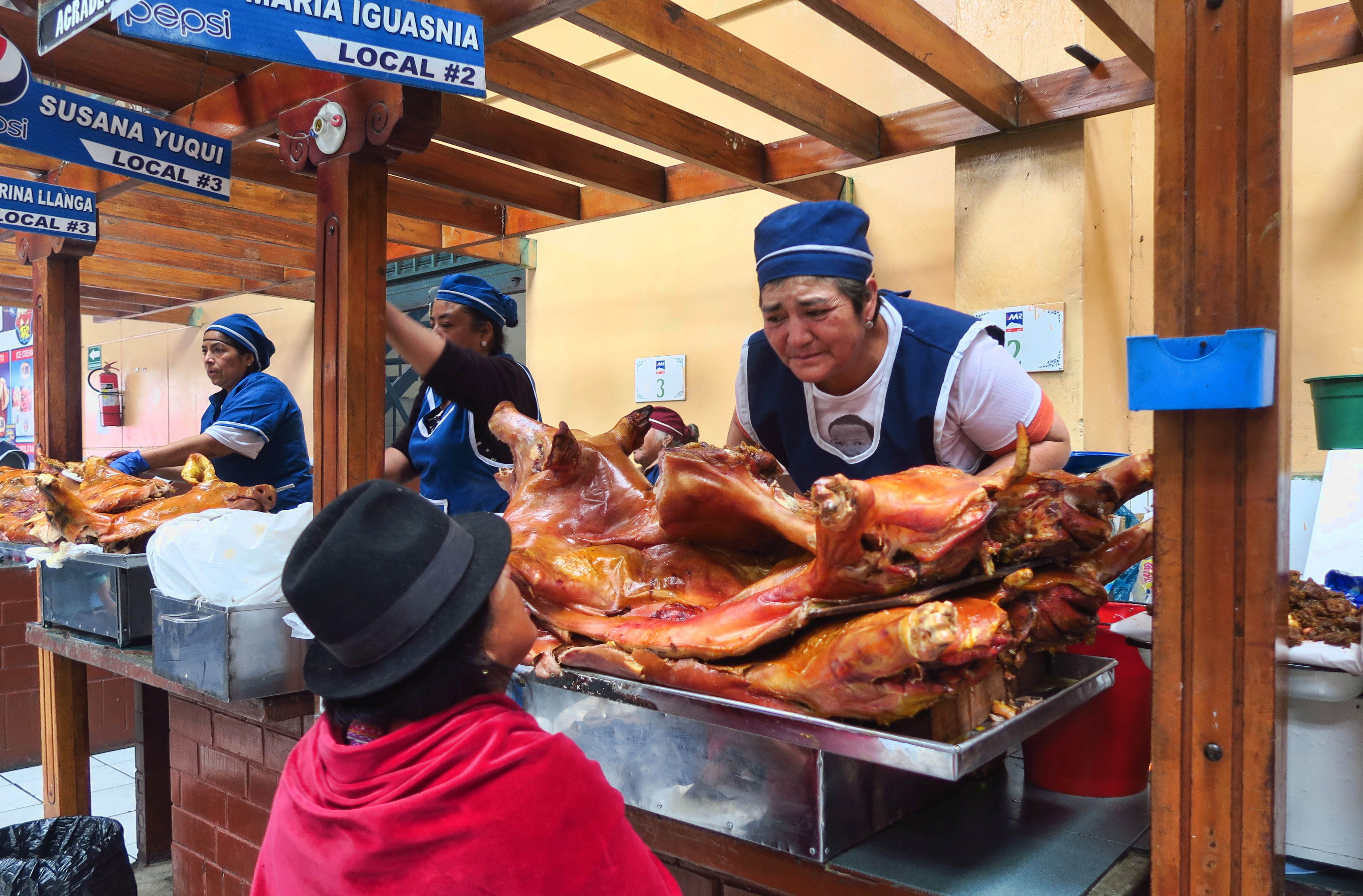 This market has an entire section dedicated to “Hornado,” which is whole roasted pig. This is a big deal in the highlands of the Andes, where annual Hornado competitions are taken quite seriously. 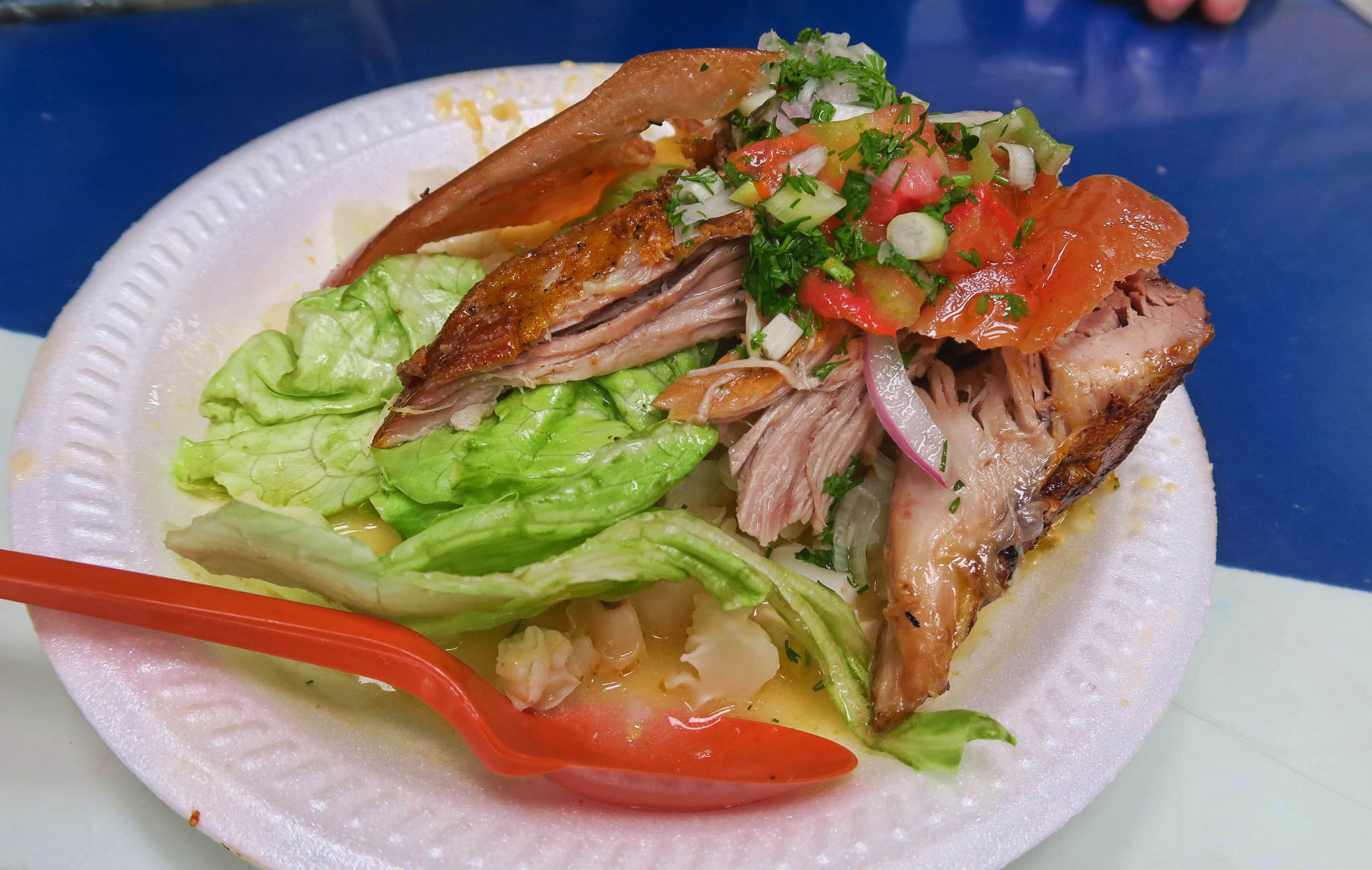 This plate of hornado was one of the best meals I had while in Ecuador.

There are a couple of exceptions to my assessment. One of those is considered a staple in Ecuador, “Locra,” or potato and cheese soup with avocado and cilantro on top. I had this as a main dish several times, and it was consistently good and filling, particularly on those cold rainy days in Quito.

They also do fresh fruit juices really well. My favorite is maracuya, or passion fruit. There are fruit juice stands where you can order any number of fruits blended into juice. A few chunks of fruit, a little sugar to tone down the tartness, and a scoop of ice, all blended while you wait for less than the price of a Diet Coke. Why don’t we have more of these juice carts in the US?

But the thing Ecuador really excels at is ice cream. I don’t know where I’ve had better ice cream (more like gelato) than Ecuador. Ice cream shops are plentiful and affordable. And that brings me back to the Wanderbus….

Along our southbound circuit on the Pan American Highway, we pass through Salcedo, home of the locally made Helado de Salcedo, Ecuador’s most famous ice cream bar. This traditional bar consists of four layers, with a core of guava jelly (this sounds gross, but it’s rather like pineapple topping on a sundae) inside four frozen layers. The top layer is leche or milk, which might seem a little boring onto itself. But when mixed with the tartness of the next three layers, it’s the perfect offset, like an old fashioned Dreamsicle. 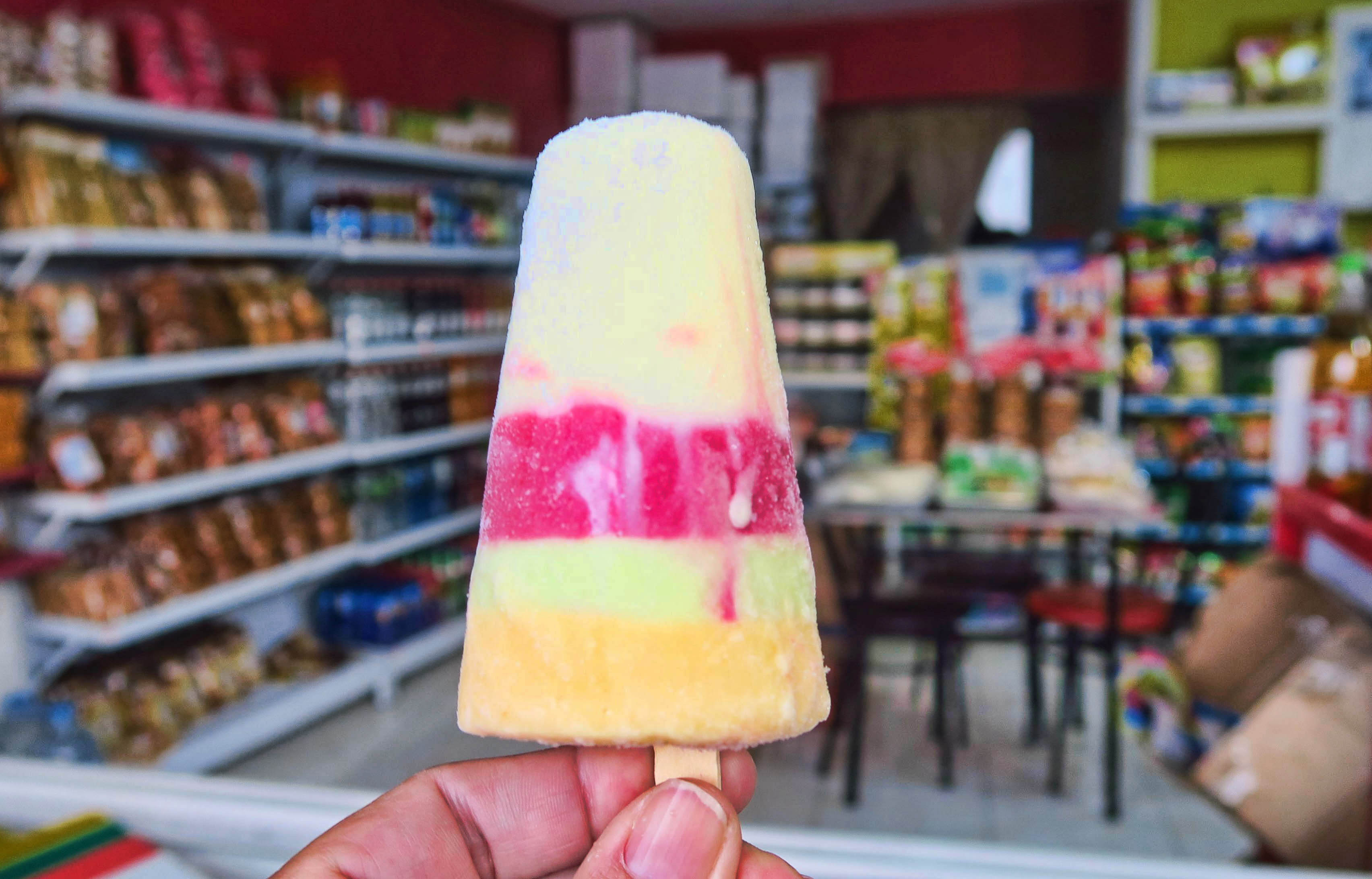 Oh, this is one good ice cream bar! 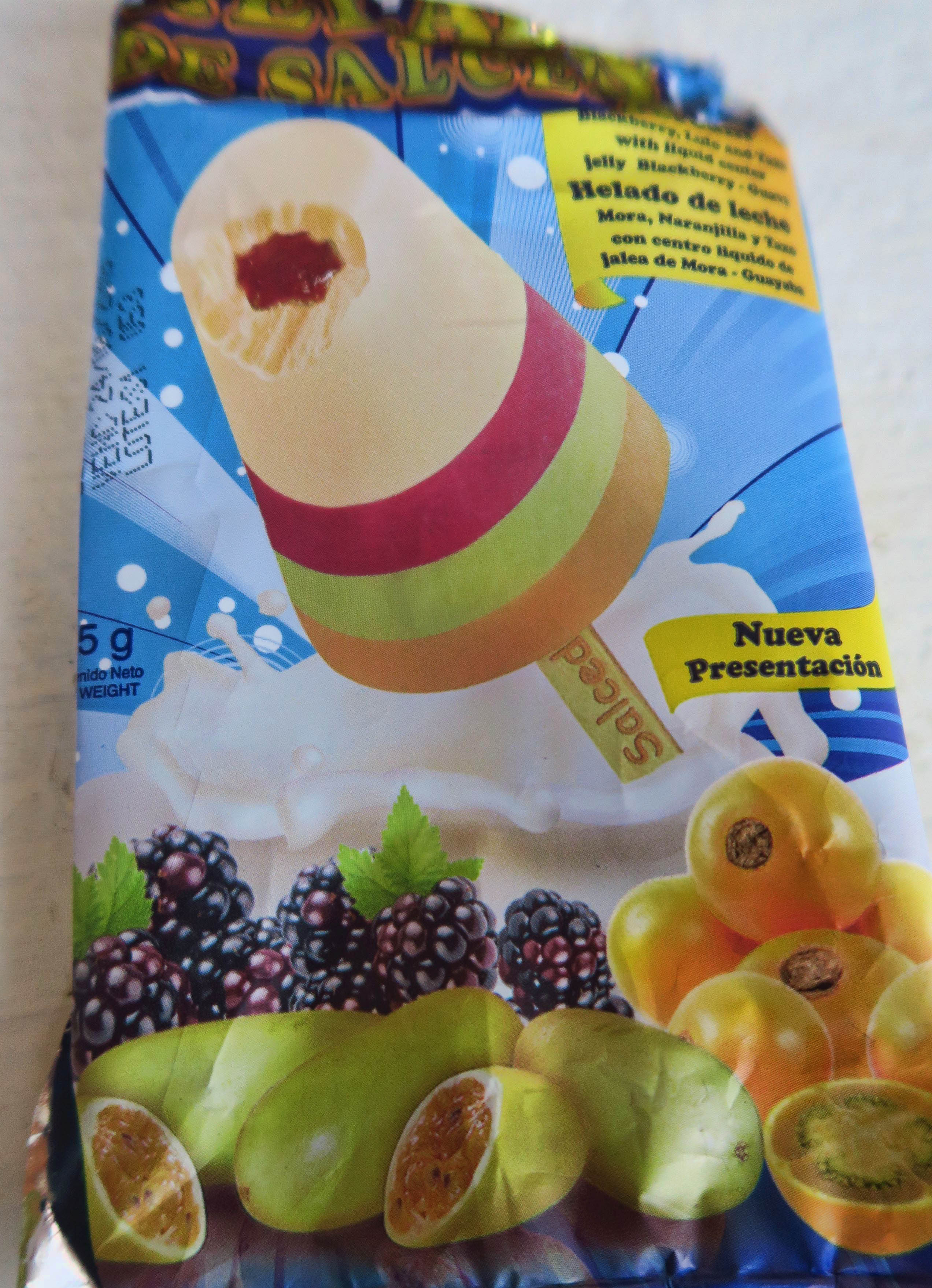 Here’s the wrapper which shows the inside core, as well as photos of the fruits that make up the layers. 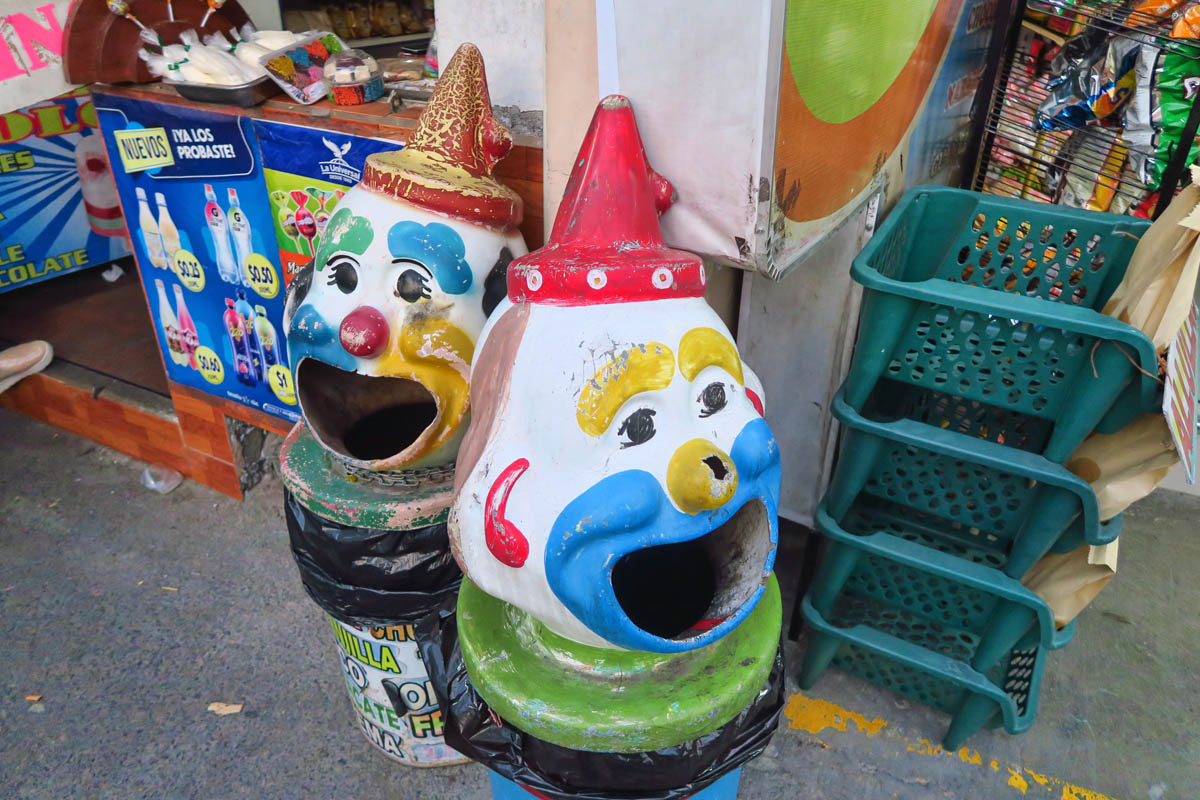 The next three layers are fruit ice cream, starting with mora or blackberry. Naranjilla comes next, which is a tart citrusy orange colored fruit, also known as “lulo” outside of Ecuador. And finally there is taxo, also referred to as “banana passion fruit.” Since Ecuador is so big on fruit juices, it only seems natural to find them in the form of the country’s most famous ice cream bar. 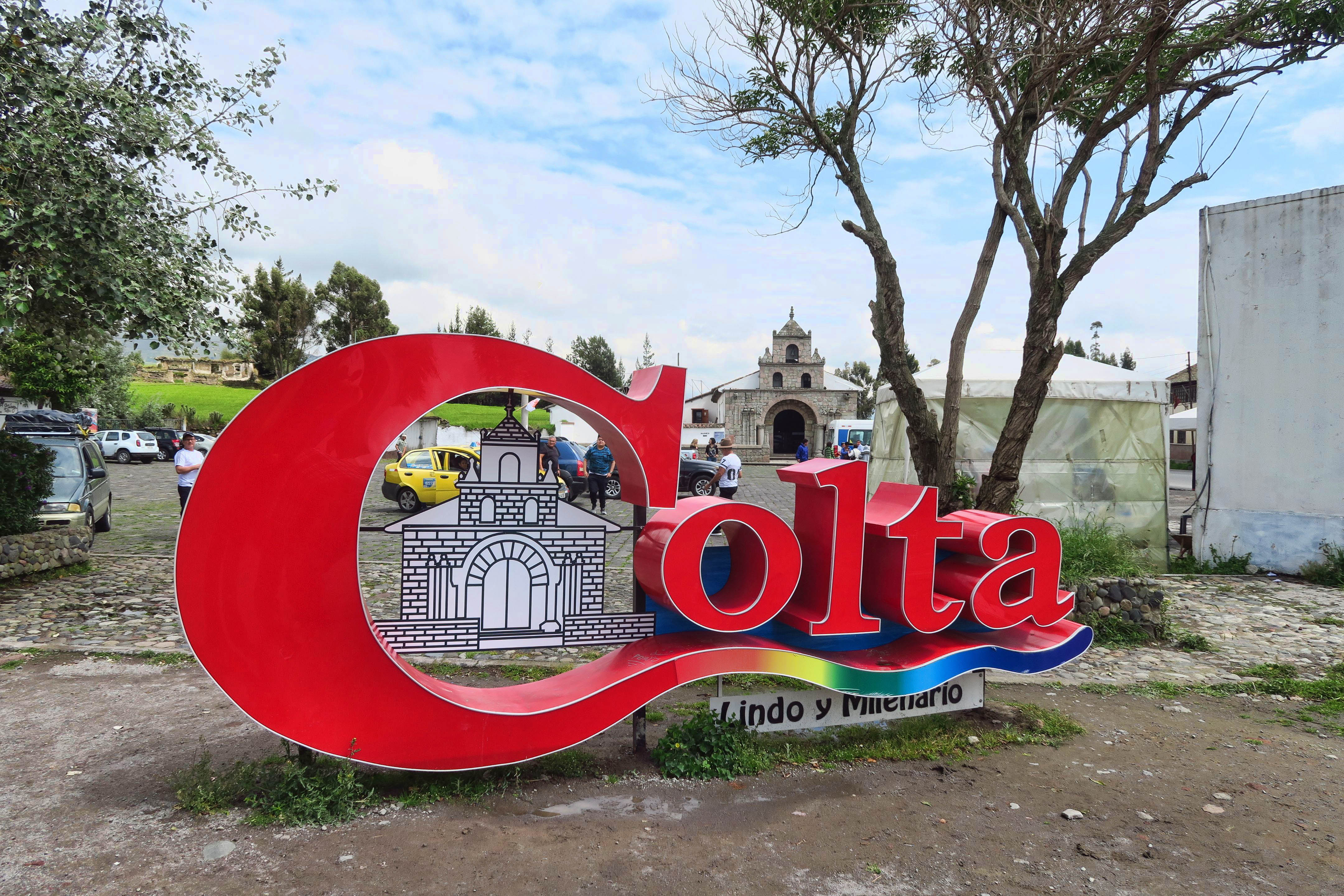 We make a pit stop in the small hamlet of Colta to visit the famous church there. 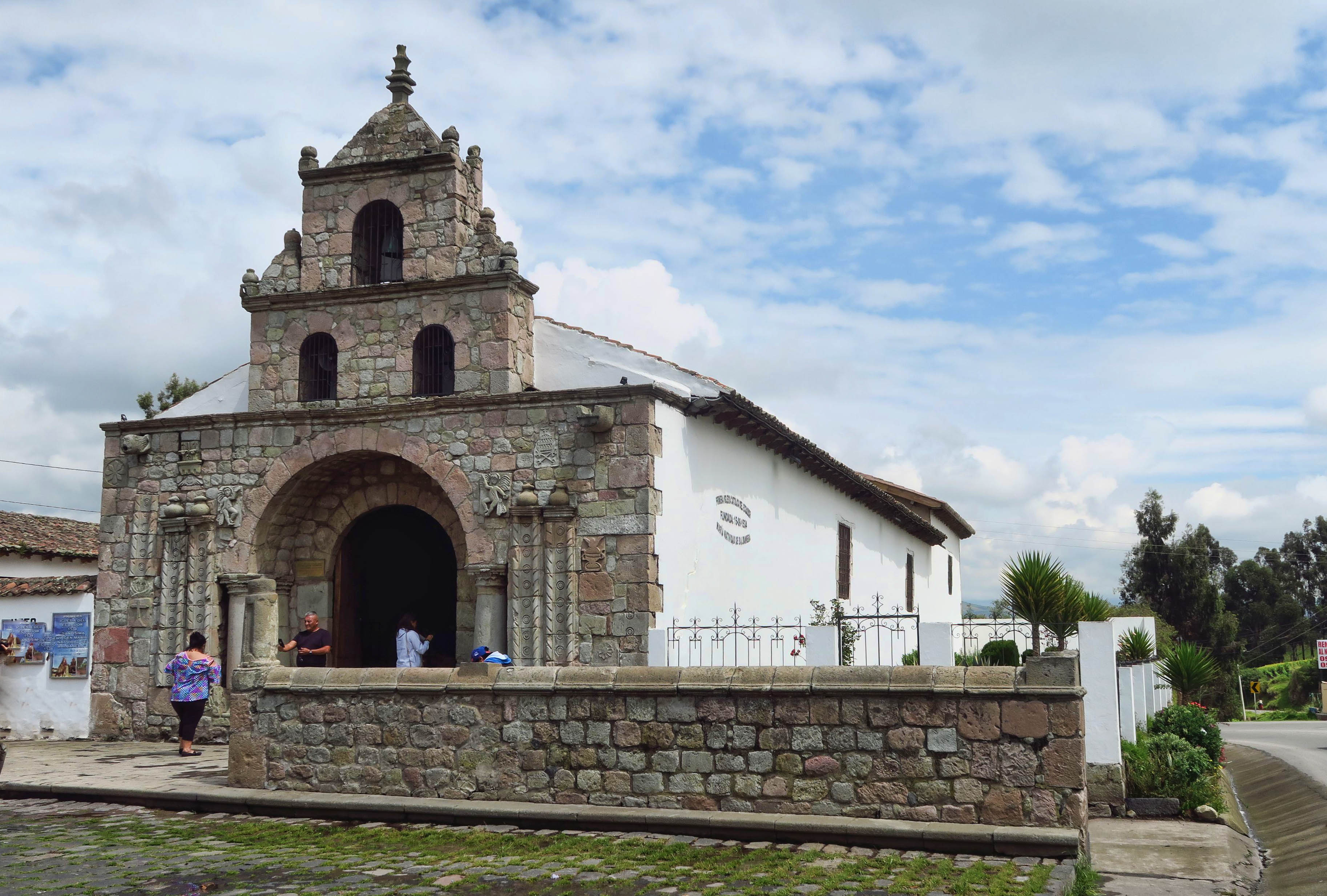 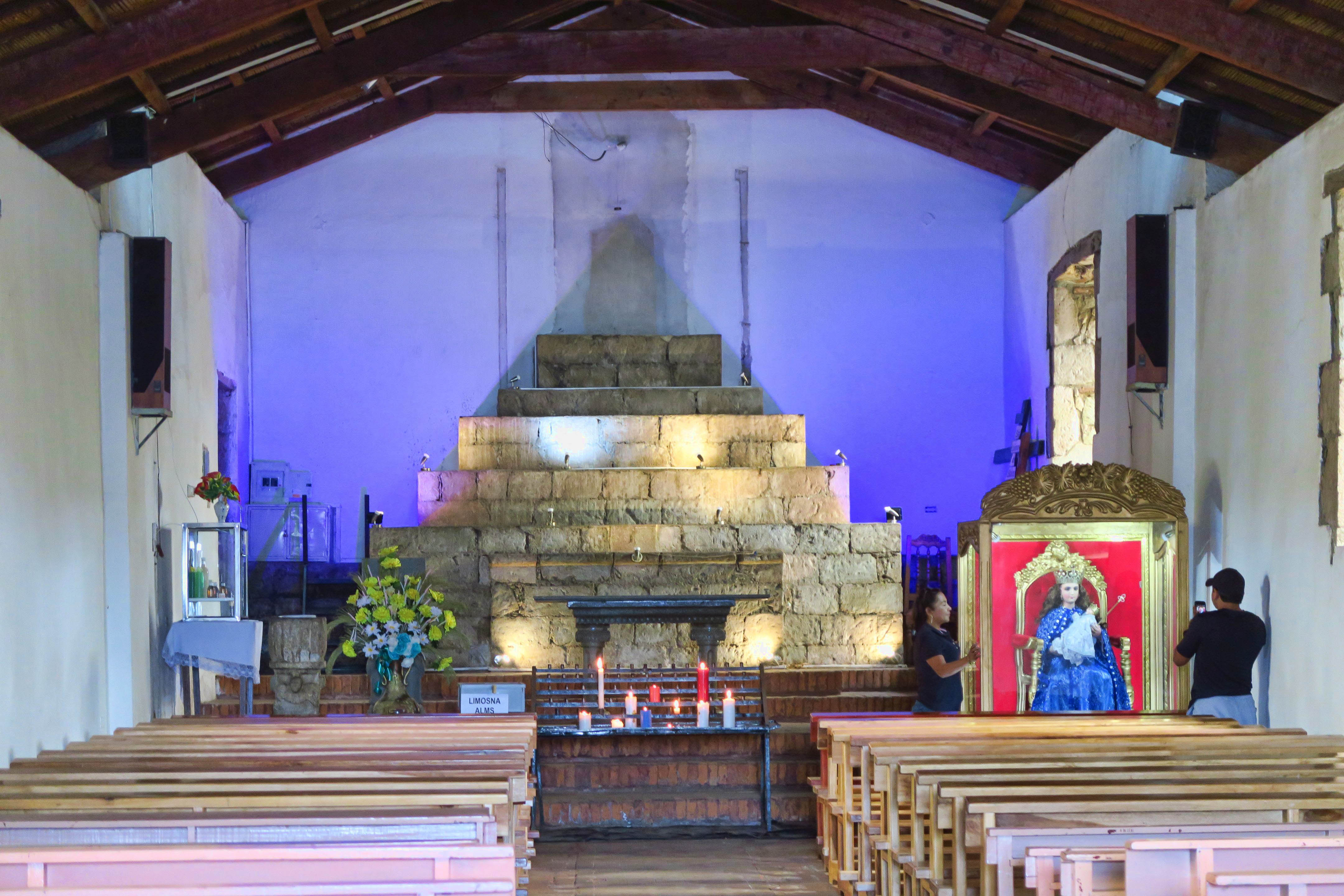 While most of the influence is Spanish, there is some Mayan influence in the church design as well. 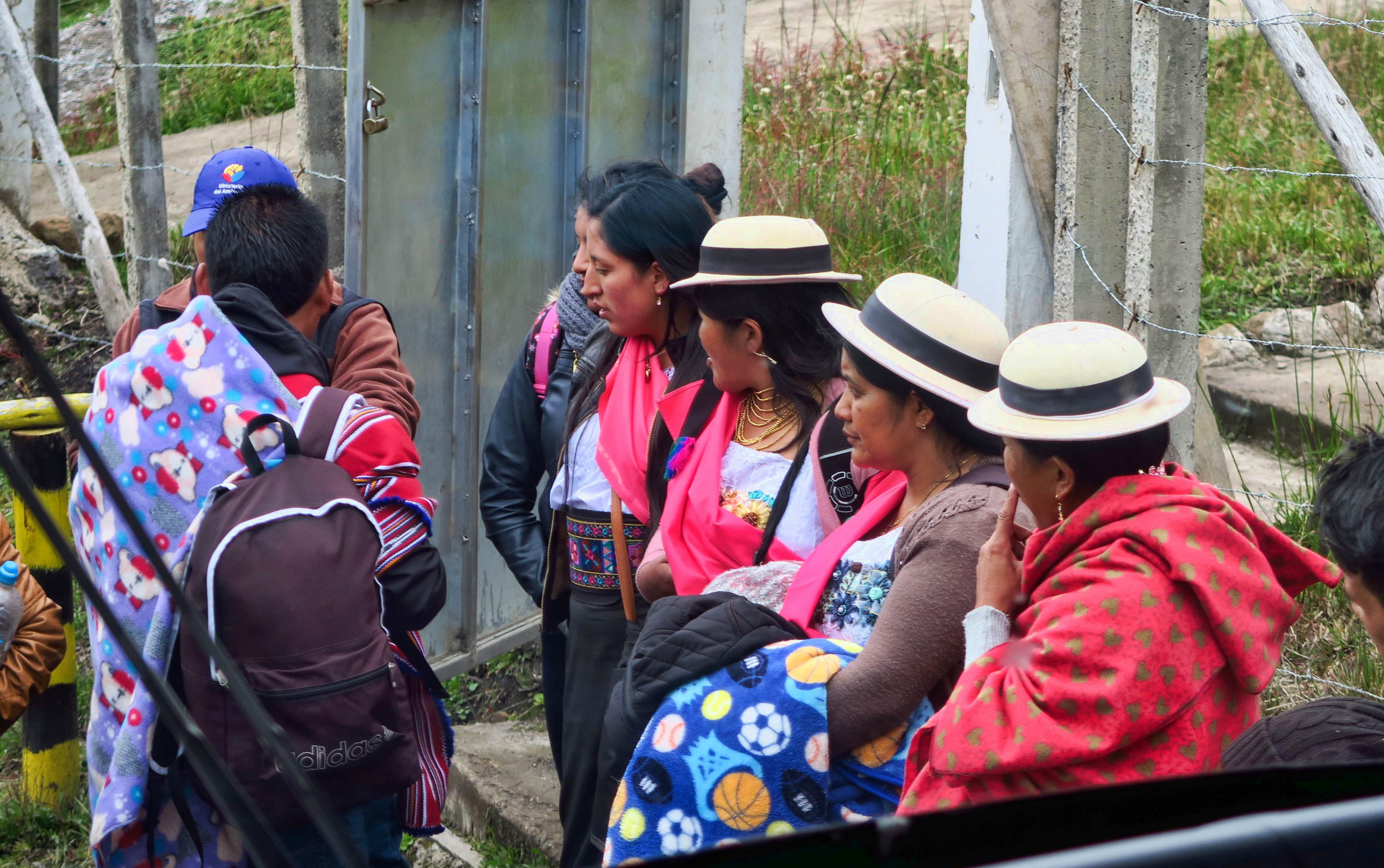 Tribes of indigenous women are identified by their clothing. These women wear a straw bowler-type hat, different from the Kichwa fedoras.

We are headed to the Ozogoche Lake Complex, an area consisting of 45 separate lakes and lagoons inside Sangay National Park, listed as a UNESCO World Heritage Site in 1983. Considered to be in the “páramo,” or high alpine ecosystem above the tree line but below the permanent snow line, the park takes its name from the active Sangay Volcano at 17,388 feet. While the park is reported to be home to all sorts of crazy sounding wildlife, ” spectacled bears, giant otter, jaguar, ocelot, margay, Brazilian tapir, and the pampas cat” sadly the closest we get to wildlife is a few untamed horses. 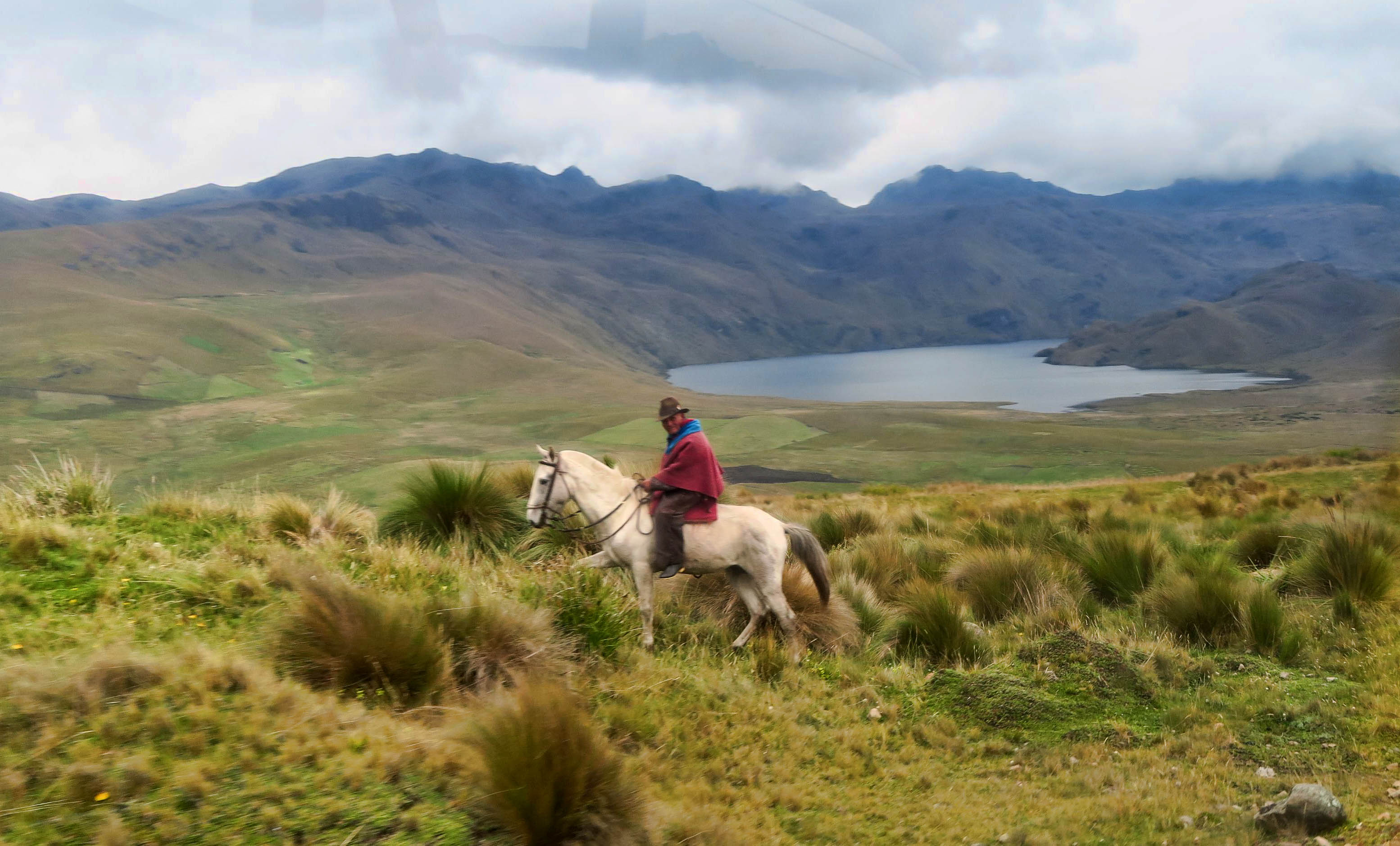 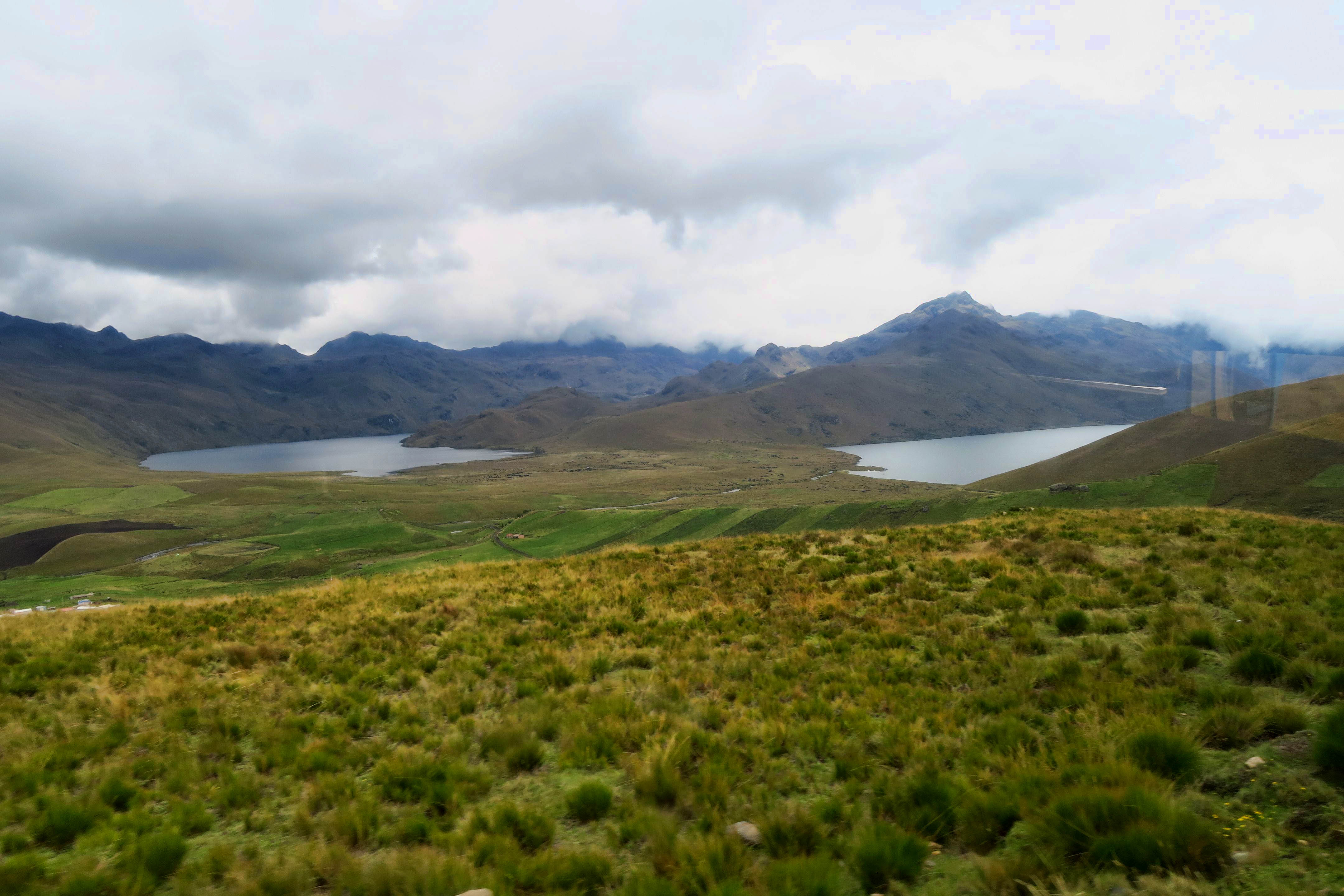 Our restaurant is called “Restaurante Dos Lagunitas” which means “Two Lagoons.” One is considered sacred, while the other us used for sustenance. 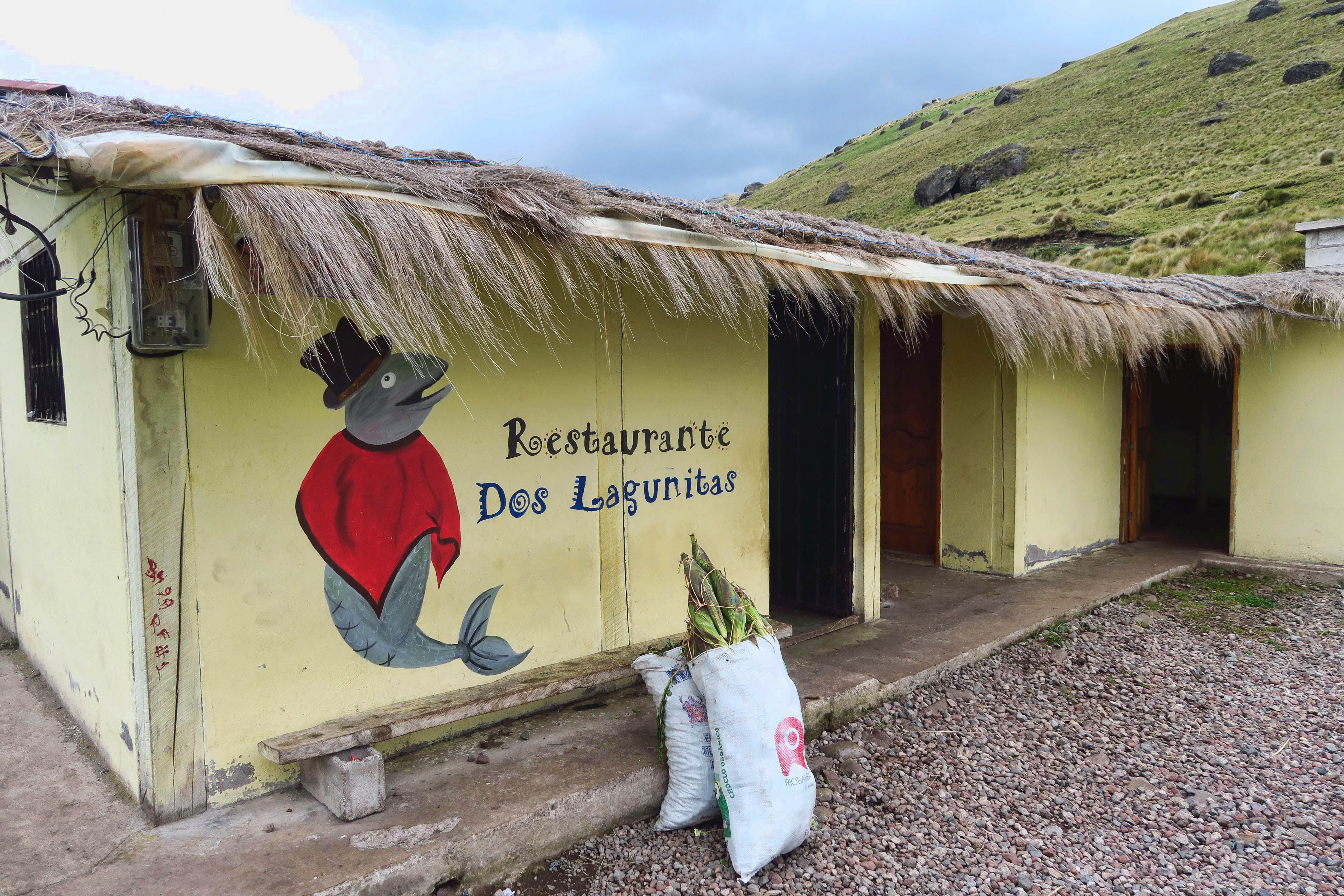 Our corn has arrived…

The fact that we will be having lunch prepared by the indigenous tribe inside the national park gives me some pause. Stephanie, our guide comes around the bus early to ask if we want fish or Locra, potato soup. She explains we must phone in the order early, because the trout is coming out of the local lake. The “restaurant” is miles from the anything, so it’s not exactly a short order grill.

Upon arrival, the plan is to do a hike before lunch is served. Horseback rides are also on offer for a mere $3.00, but I am eager to stretch my legs. 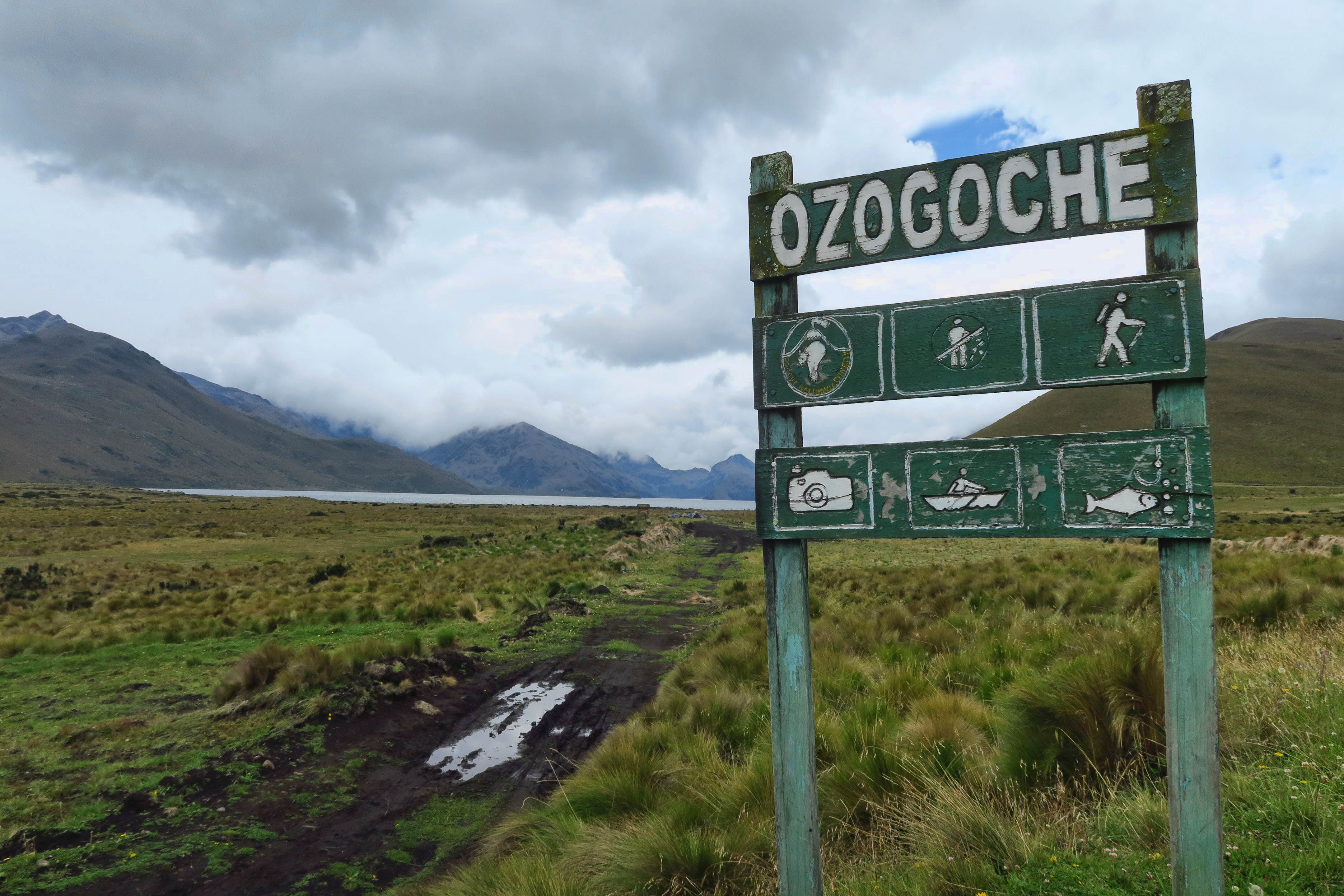 Trail head for the Ozogoche hike. 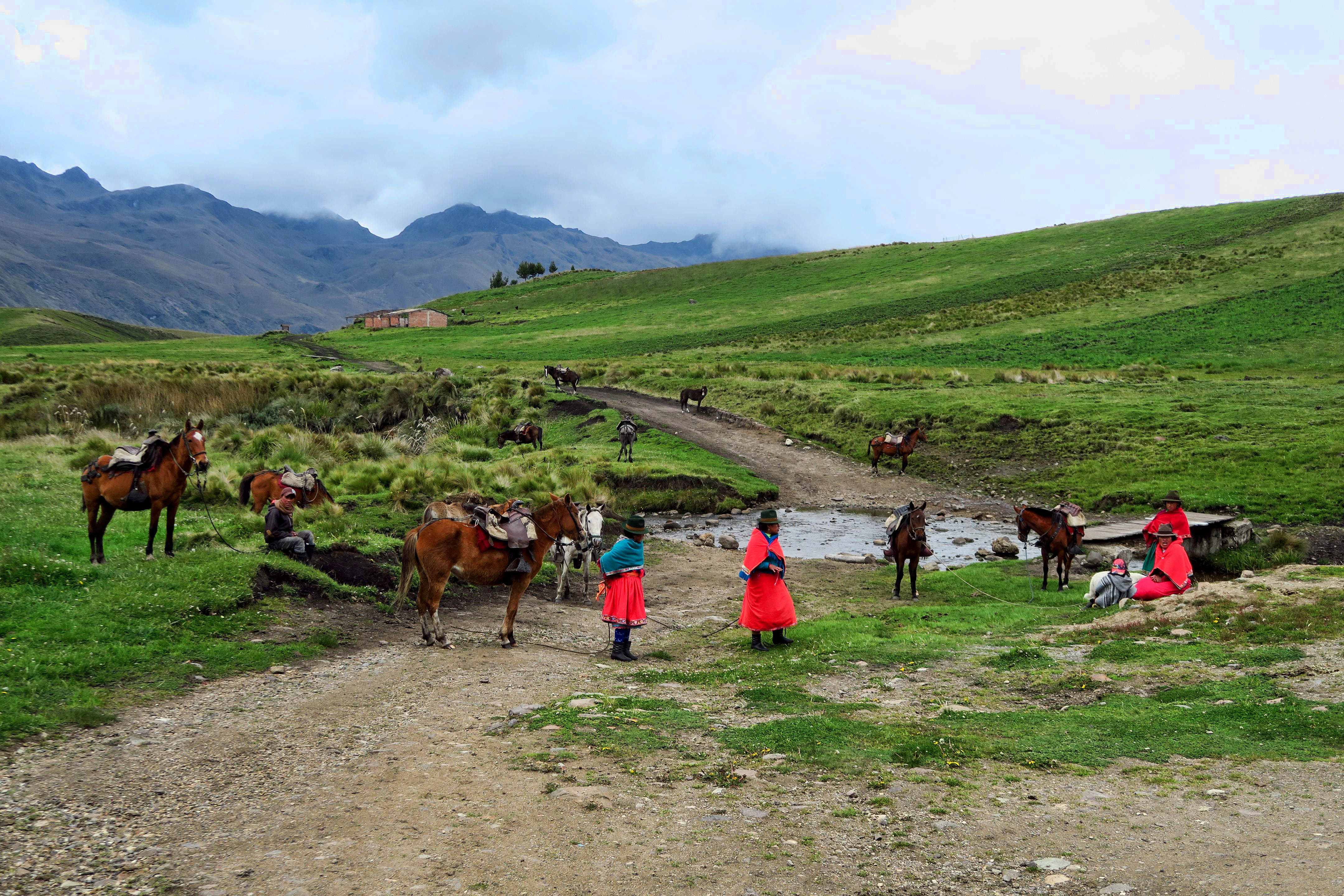 We are given the option to ride horses, or walk. 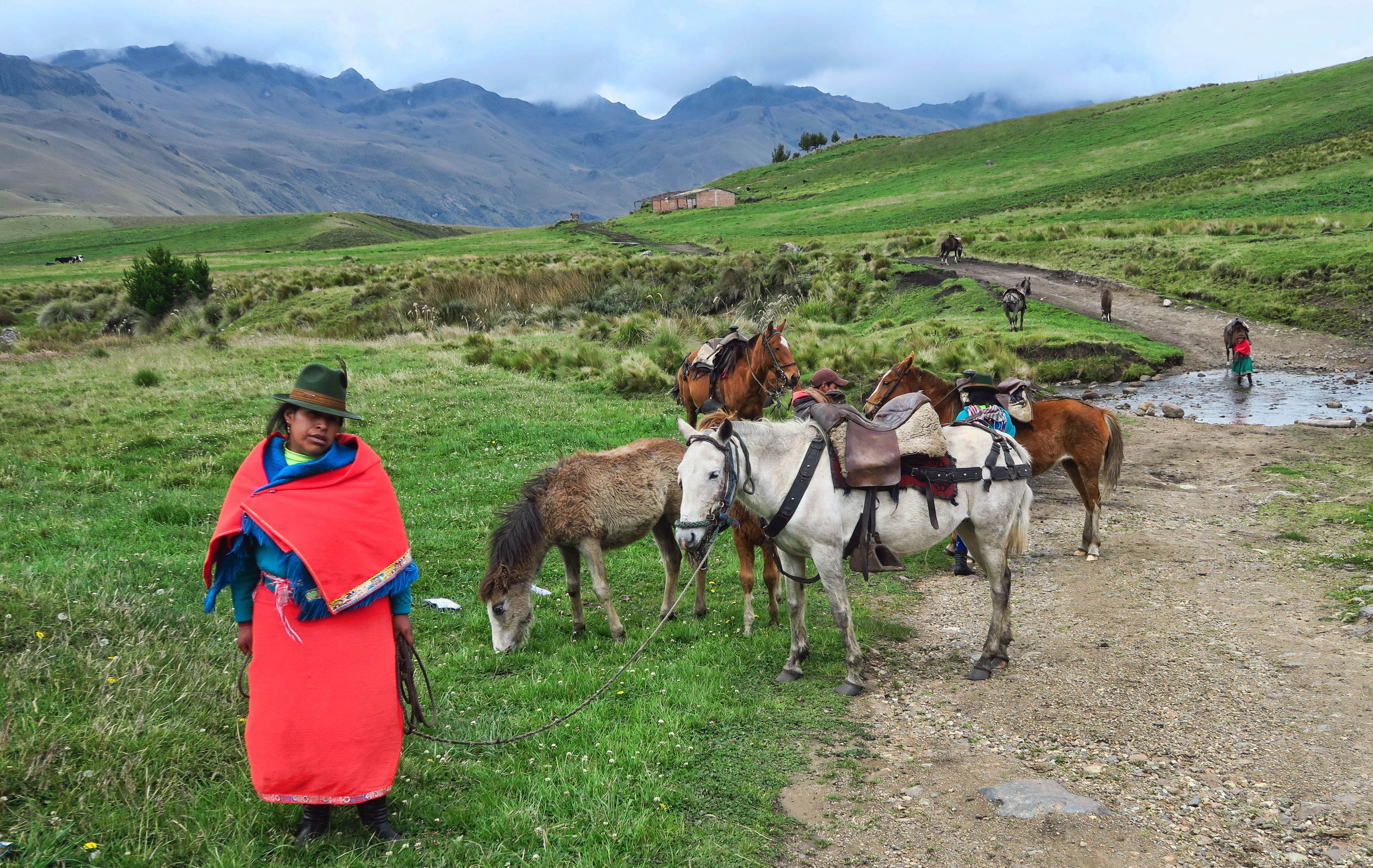 The price is only $3 round trip. Since I am patronizing the restaurant for my $5 lunch, I try not to feel guilty about declining the horse rental, as I had much rather walk. 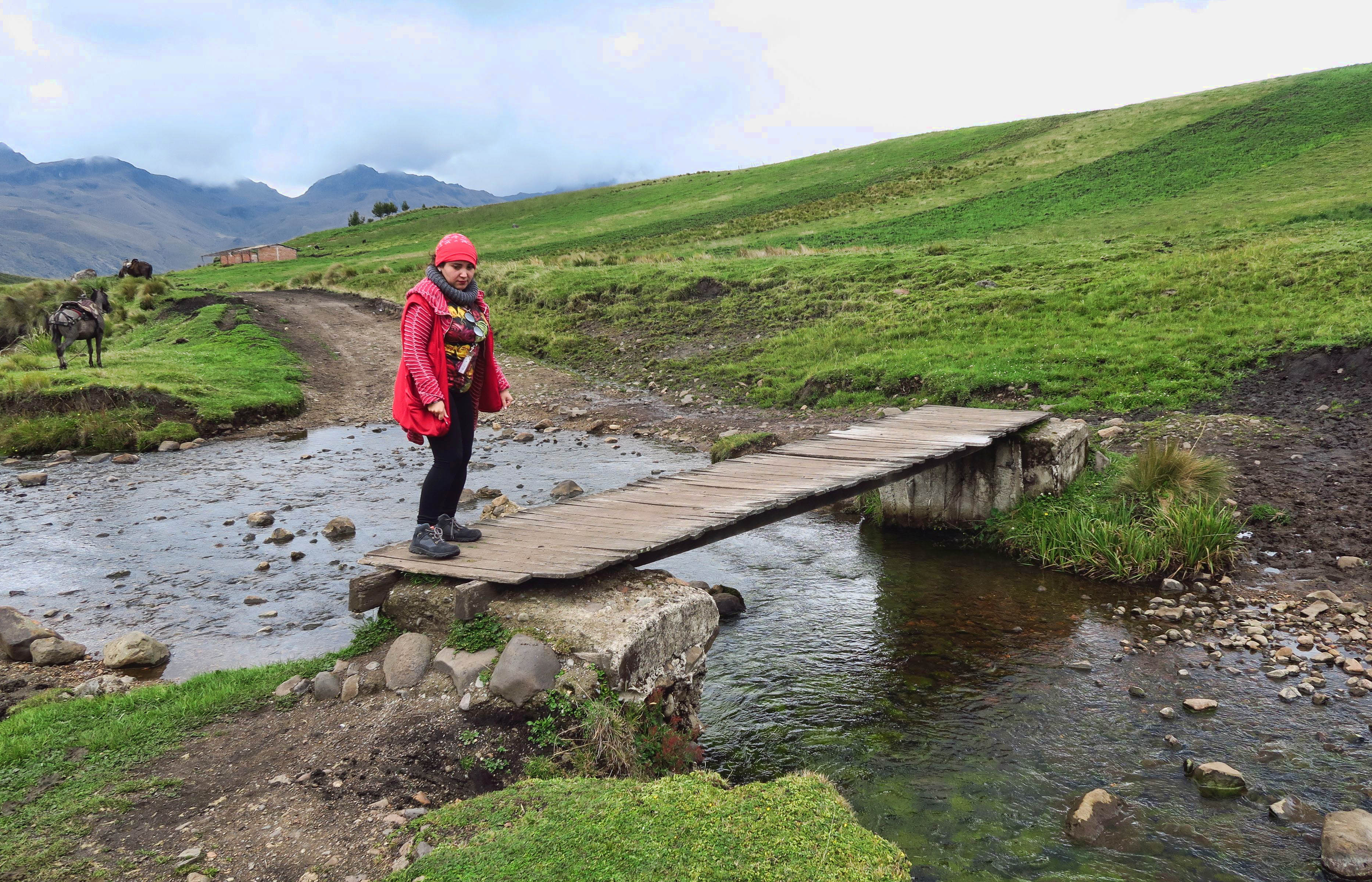 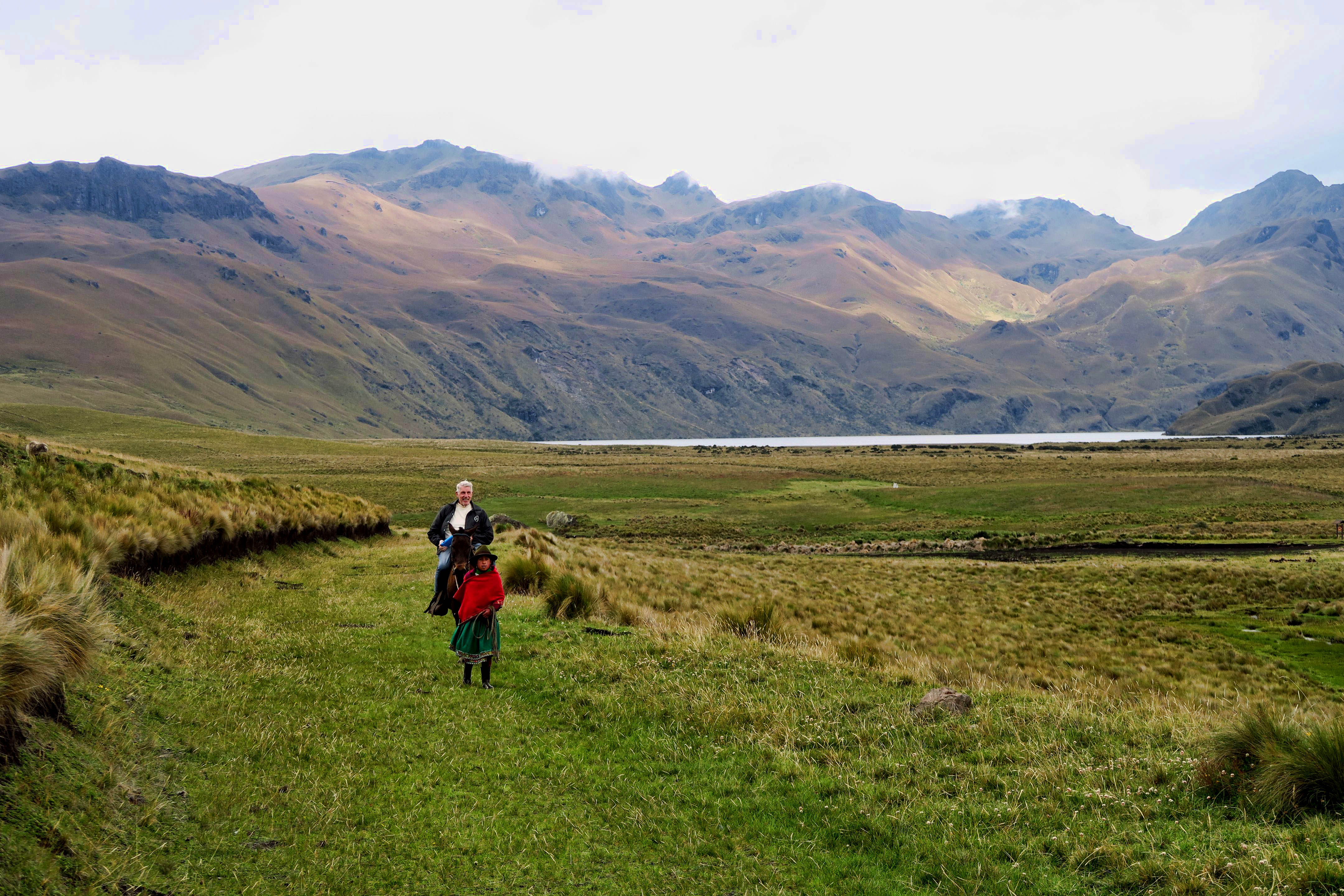 The scenery is stunning here. I could hike here for days. 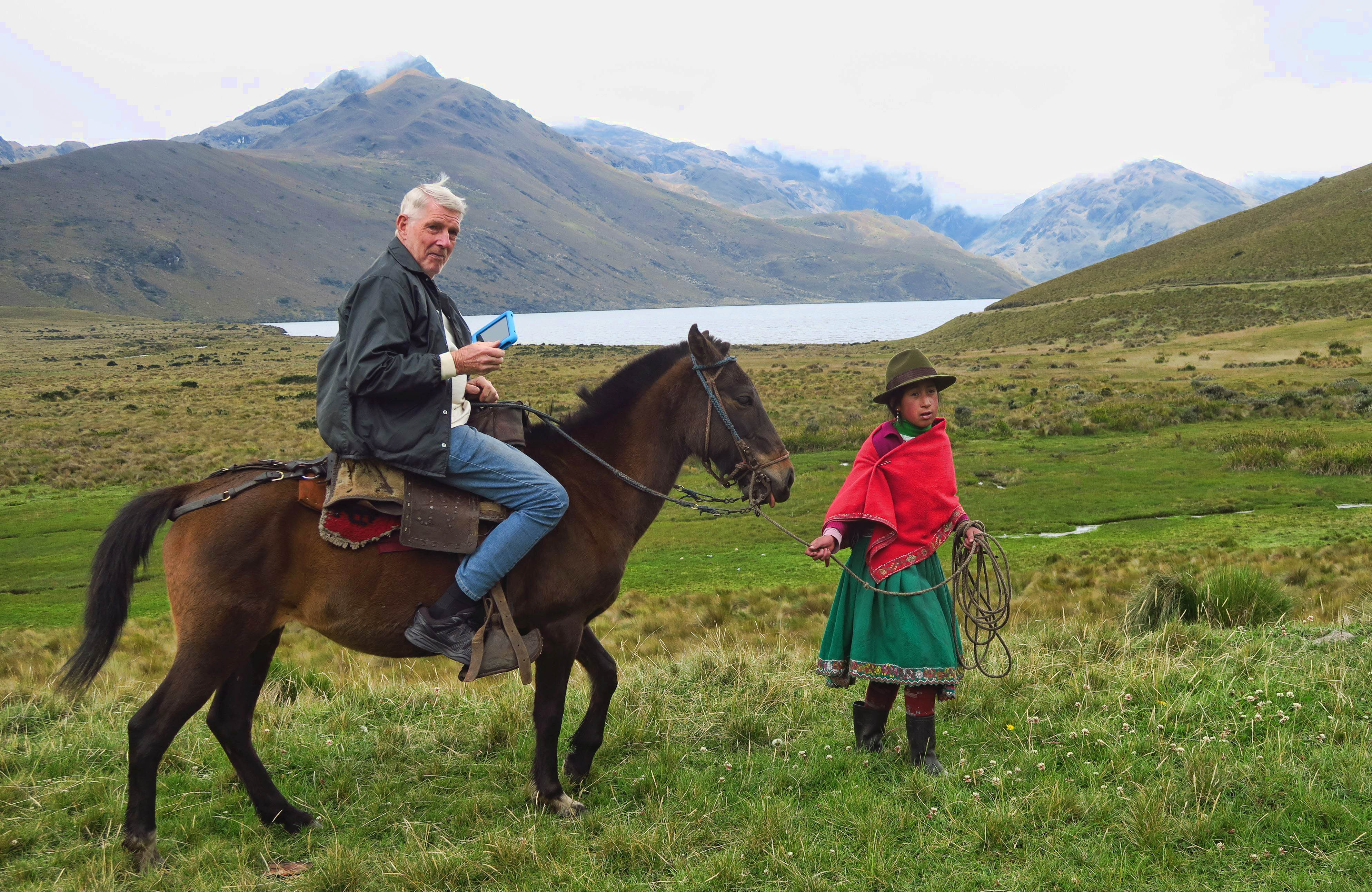 This picture seems wrong on so many levels…

There is literally nothing else within sight of the “Restaurant Dos Lagunitas.” Inside, it smells dank and musty from the mildew on the cinder-blocks and brick floor. I am not sure I can even eat. But at the same time, I don’t want to be offensive to the indigenous women, either.

I try to eat the bland beans and chunk of white cheese, but I just can’t choke either of them down. The corn, while bland, is palatable, though it must surely be the early stages of hominy.

Next, the fish arrives, accompanied by a few grains of rice and a fried plantain. I reluctantly take one bite, then another and another…it’s the freshest tasting trout I can recall tasting. It is such a treat to find something not just edible, but enjoyable! By the time I am done, there is nothing left but a fish skeleton. This is one instance where the scales of risk versus reward appeared grossly out of balance going in, but fortunately this time, tipped in my favor. 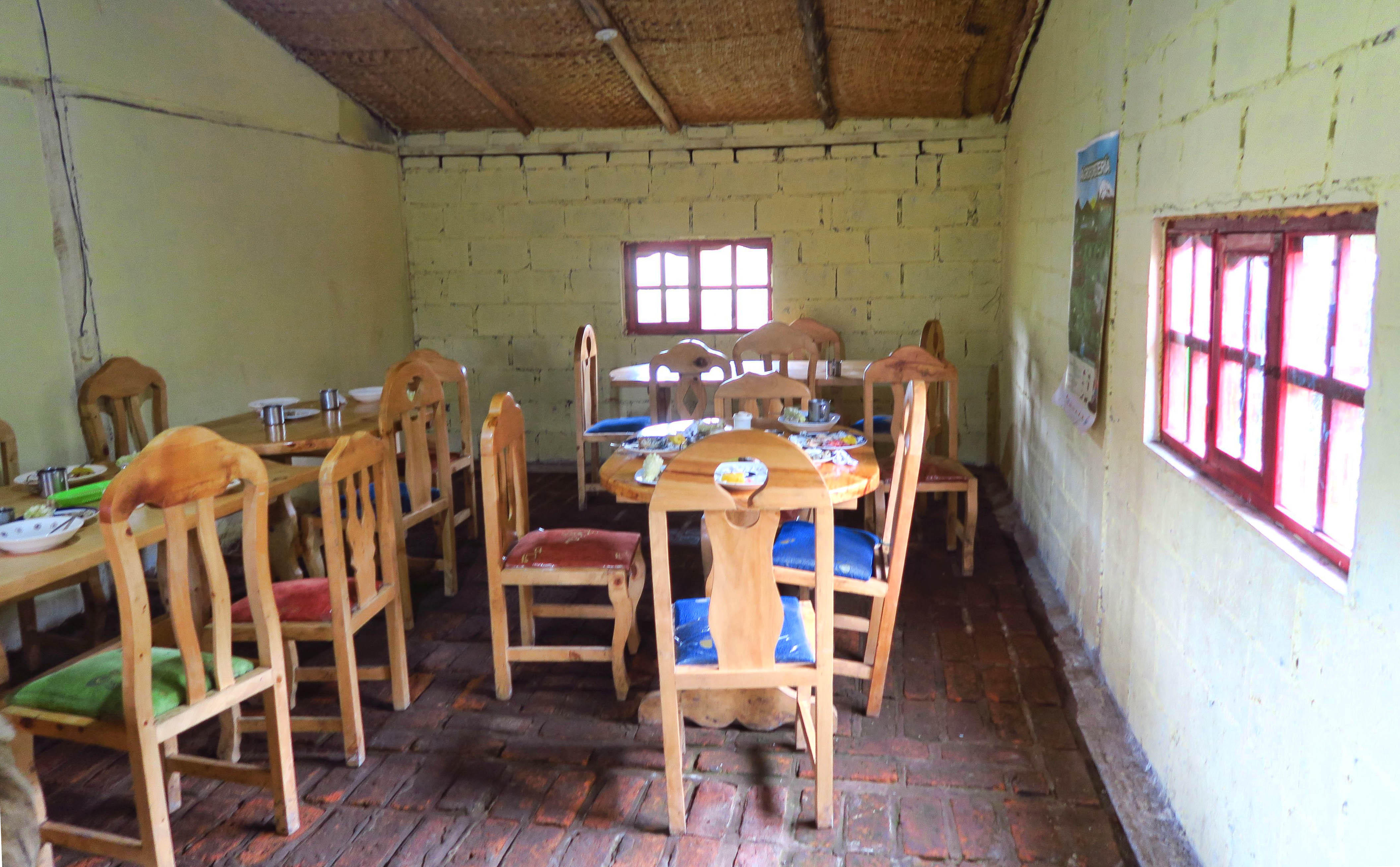 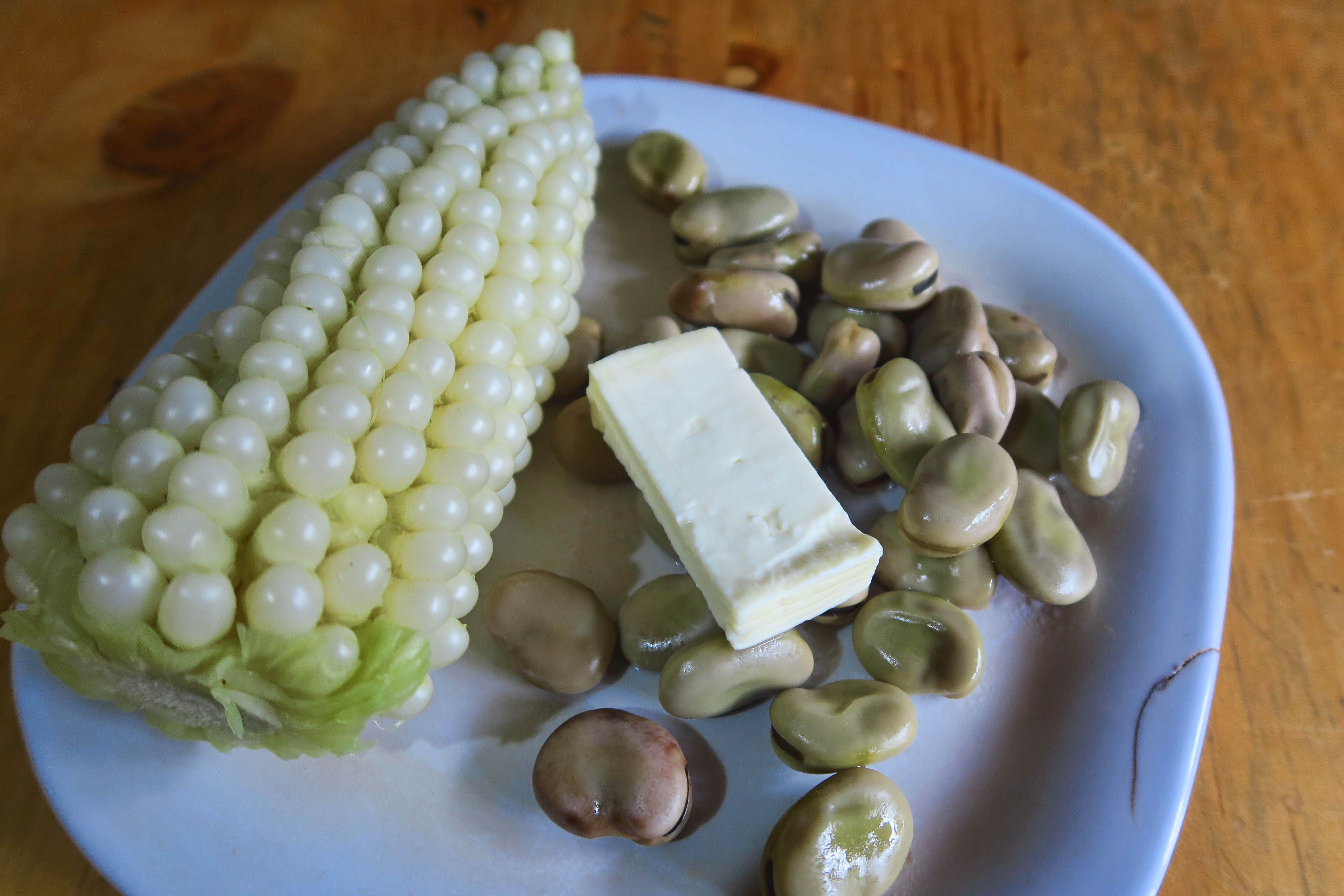 At first I thought that chunk was butter which would have helped, but instead it was a block of tasteless, rubbery cheese. 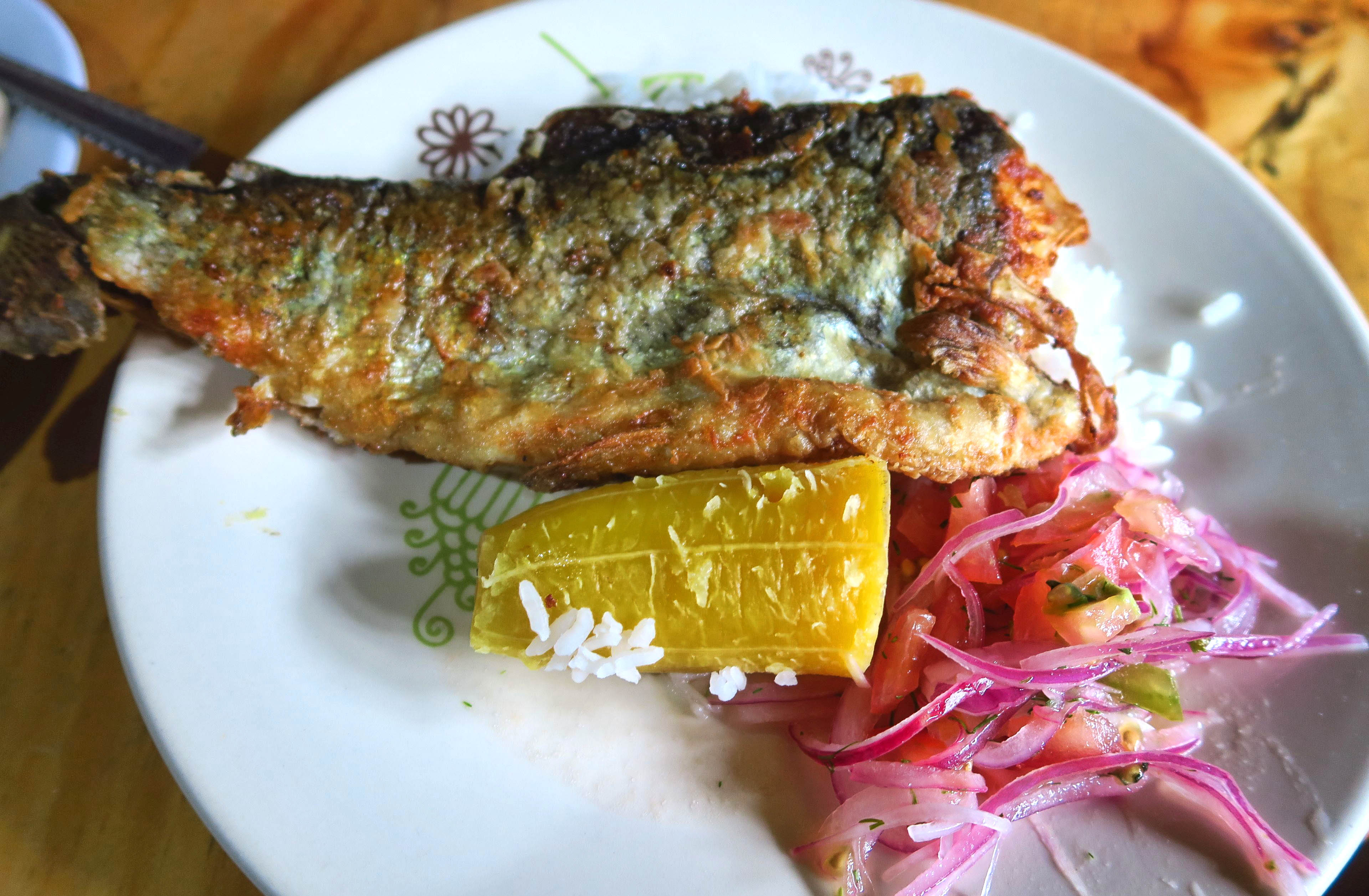 15 thoughts on “On Ozogoche and Eating in Ecuador”