I’ve expressed my love for trains on many occasions on this blog. Doesn’t matter how touristy, how pricey, how short or how long, if there is a train in town, I’m going to hop it. I attribute this love to many things. First, I came by it honestly. My Dad hopped into an open box car and rode all the way from Texas to California when he was only 18 years old. Wanderlust runs deep in the genes.

Then there is the romance and mystique, usually conjured up in movies and murder mysteries. I can’t watch the train station scene from the movie “Reds” where Warren Beatty steps onto the platform during the Russian Revolution to an awaiting Diane Keaton without getting teary-eyed. Same goes for the aerial scene of the steam engine train puffing across the African plane, carrying Meryl Strep to her farm in Africa. It’s tough to get that old world ambiance these days, but if it can be found anywhere, it’s likely to be on a train. 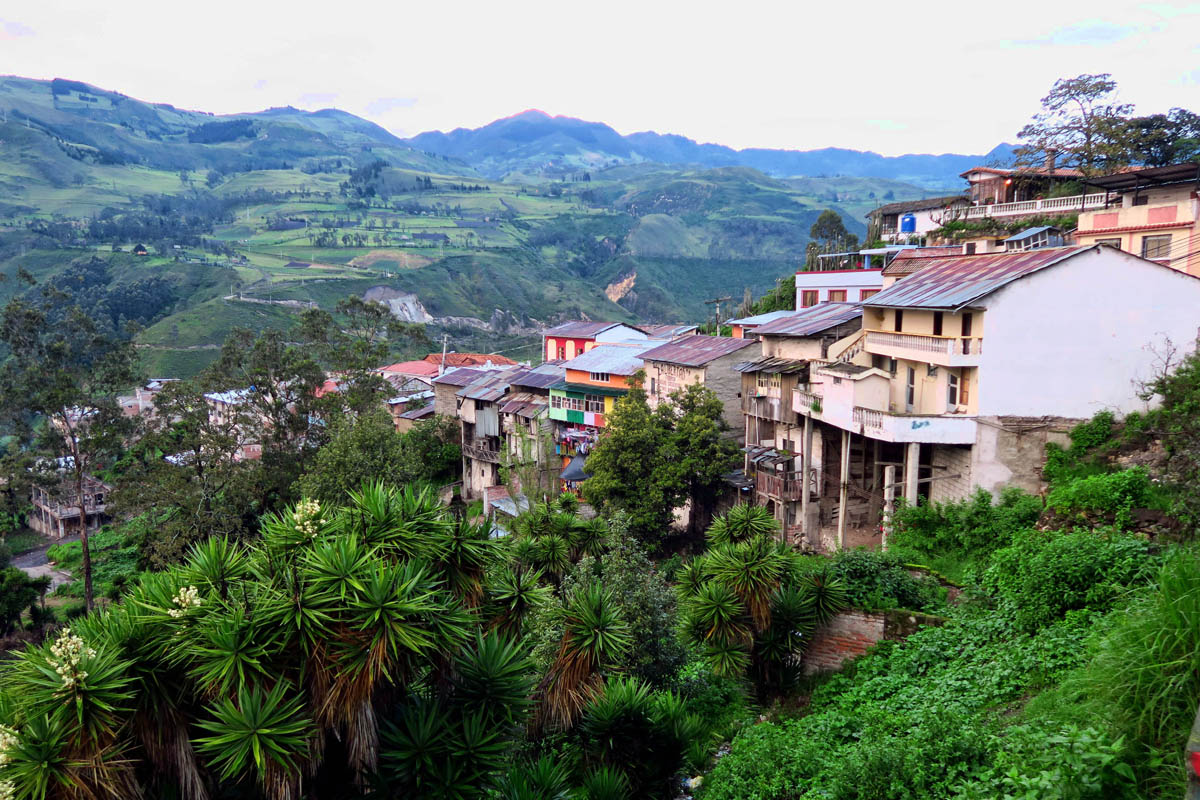 The little town of Alausi sits up in the mountains at around 7,600 ft. 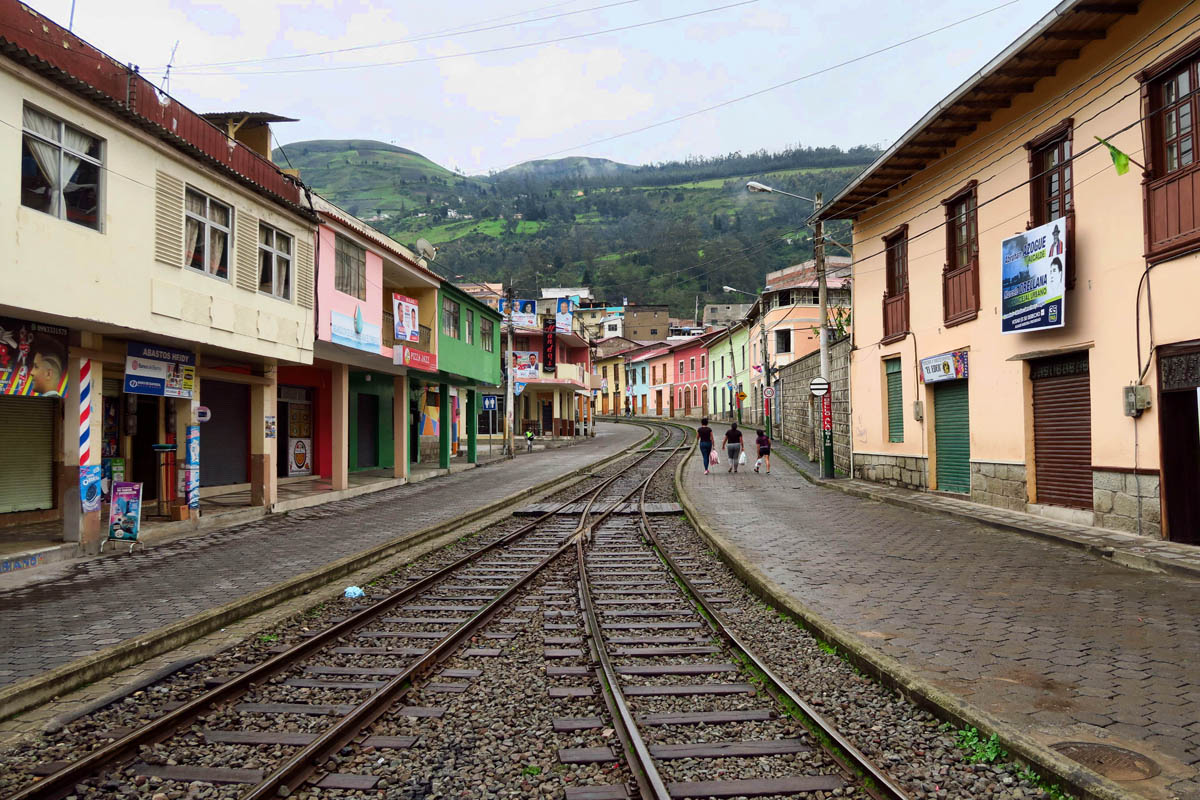 The train is the main thing going here. 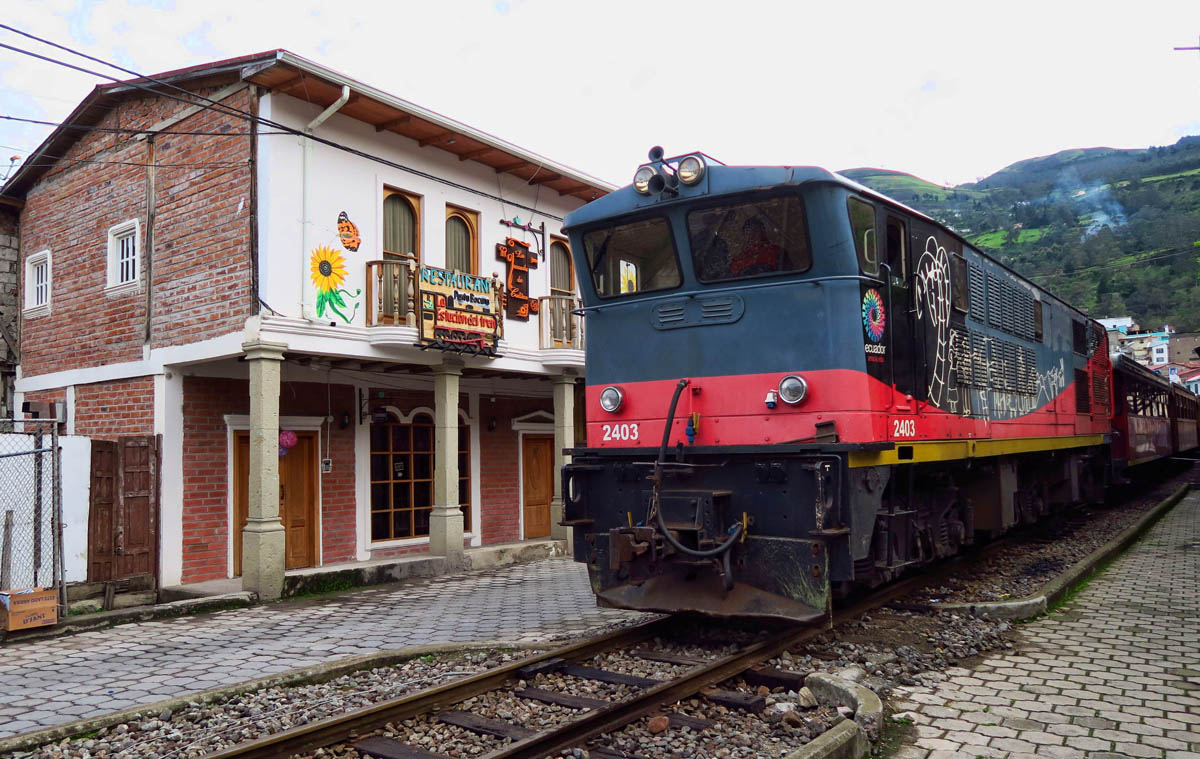 I am staying at La posada de Carlitos guesthouse, which is this building on the left overlooking the train station. 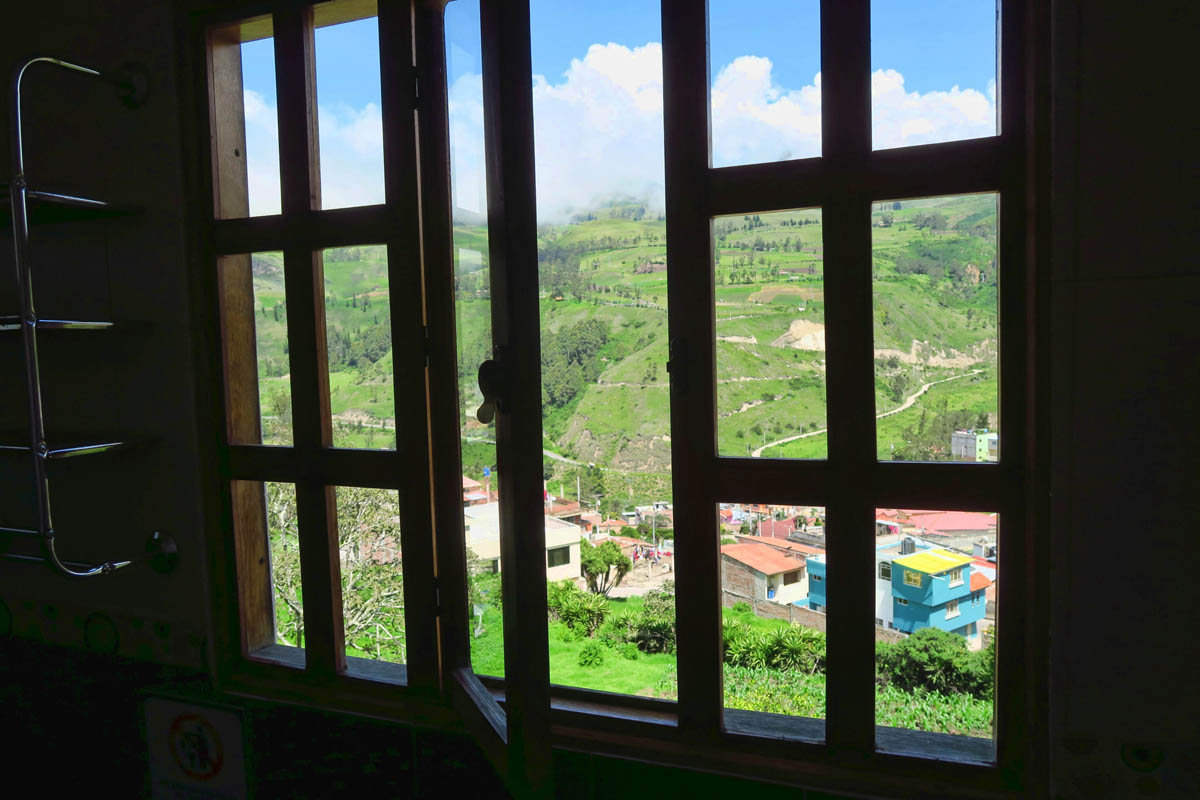 The view from my bathroom window in La posada de Carlitos. 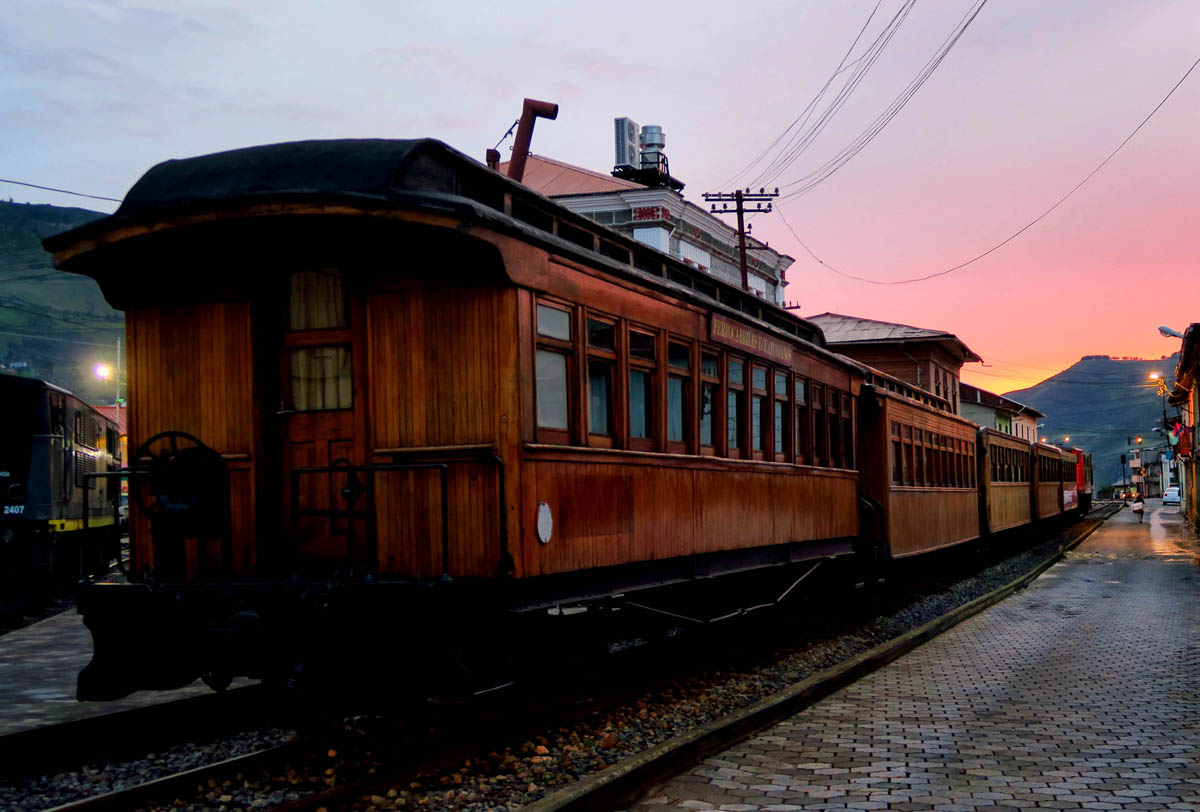 Nightfall over the tracks in Alausi.

There is also the practical side of train travel in getting from point A to Point B. Though often times slower than bus travel, the same journey on the train will offer more leg room. It’s easy to get up and walk around, or bring refreshments along. And the scenery out the windows is not typically obscured by oncoming traffic or billboards.

But then there are those instances where the train exists now solely for the purpose of tourism. Such is the case with The Nariz del Diablo, or Devil’s Nose train out of Alausi. Once a part of the Trans-Andean railway project, construction was begun in the late 1800’s to facilitate train travel between Ecuador’s capital city of Quito and the port of Guayaquil. 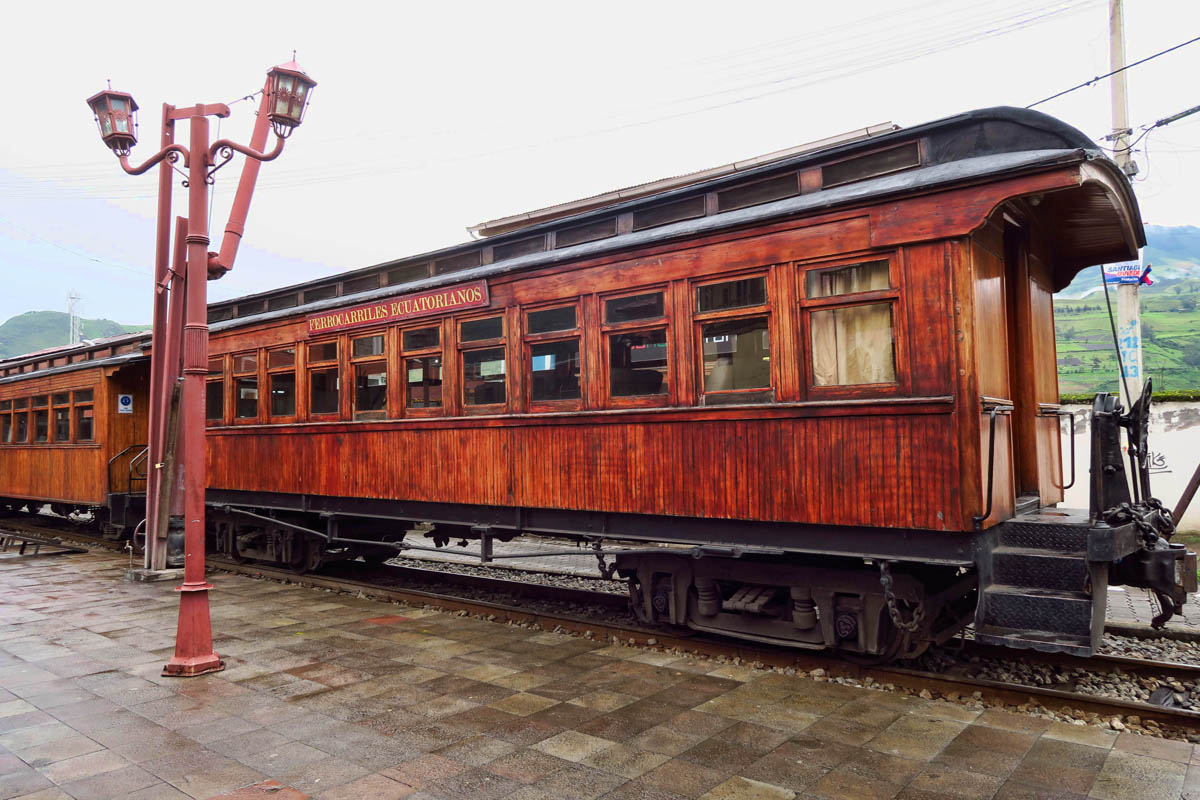 I am booked on the 8:00am train. My lovely hostess gets up early to make breakfast before I walk across the street to board. 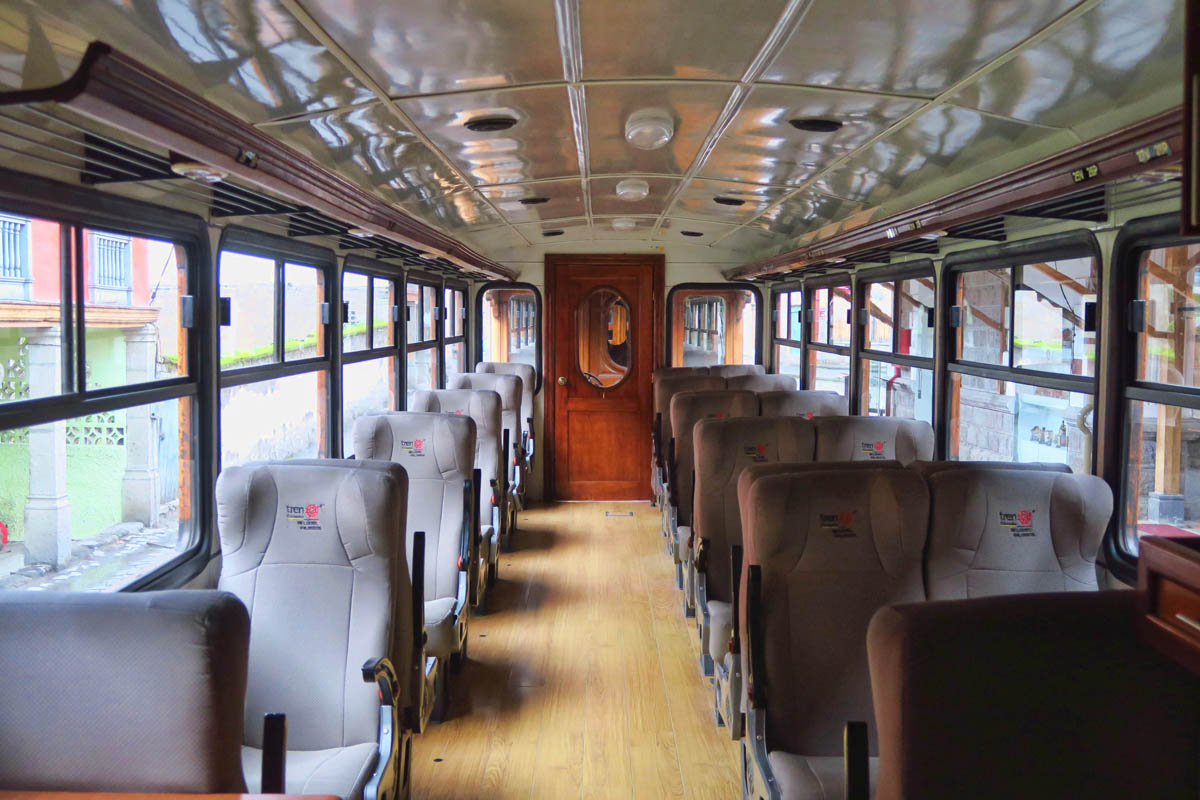 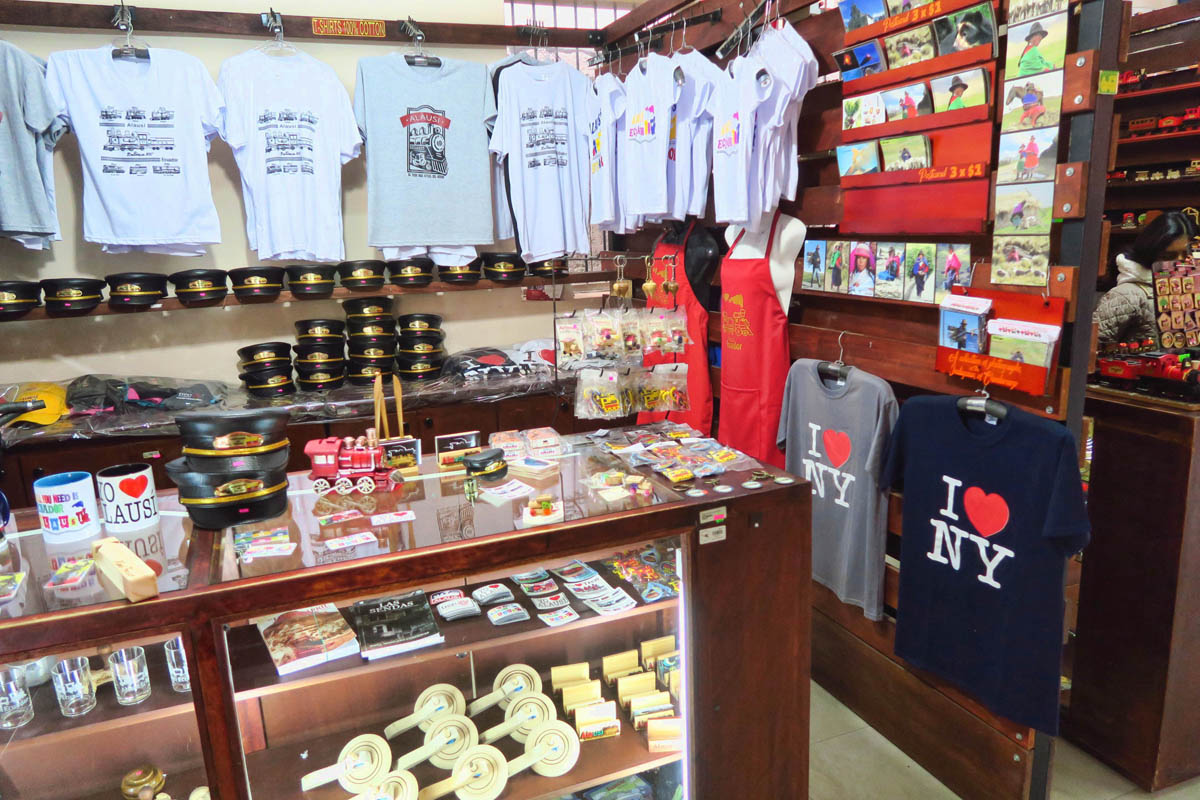 This is the Gift Shop inside the Alausi train station, selling souvenirs of the train. What’s wrong with this picture?

The rail line was completed in 1908, but not without earning the reputation as “the most difficult railway in the world.” The route was constructed using mostly slave labor from Jamaica. Over 4,000 workers lost their lives, resulting in the moniker “the devil’s nose.” The train had to traverse a sheer vertical rock wall, accomplished through a series of switchbacks which enable the train to zig-zag up and back down the rock face.

Prior to the building of the railway, this route between Guayaquil along the Pacific Coast into the mountainous Quito at over 8,000 ft took two weeks at best, and that was in the dry season. During the monsoons, the route was often impassable altogether. However, the train cut the journey time between the cities from two and a half weeks to just two days, and was an economic lifeline between the coast and highlands. It remained a fully functioning route until 1997, when parts of the track were destroyed by rain and mudslides. 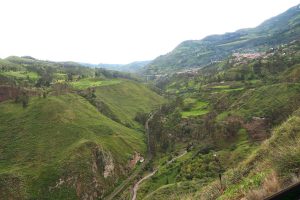 The train starts off through lush, verdant valleys. We are actually going down first… 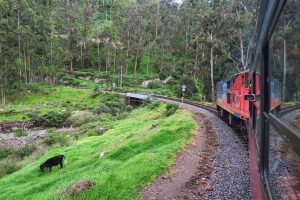 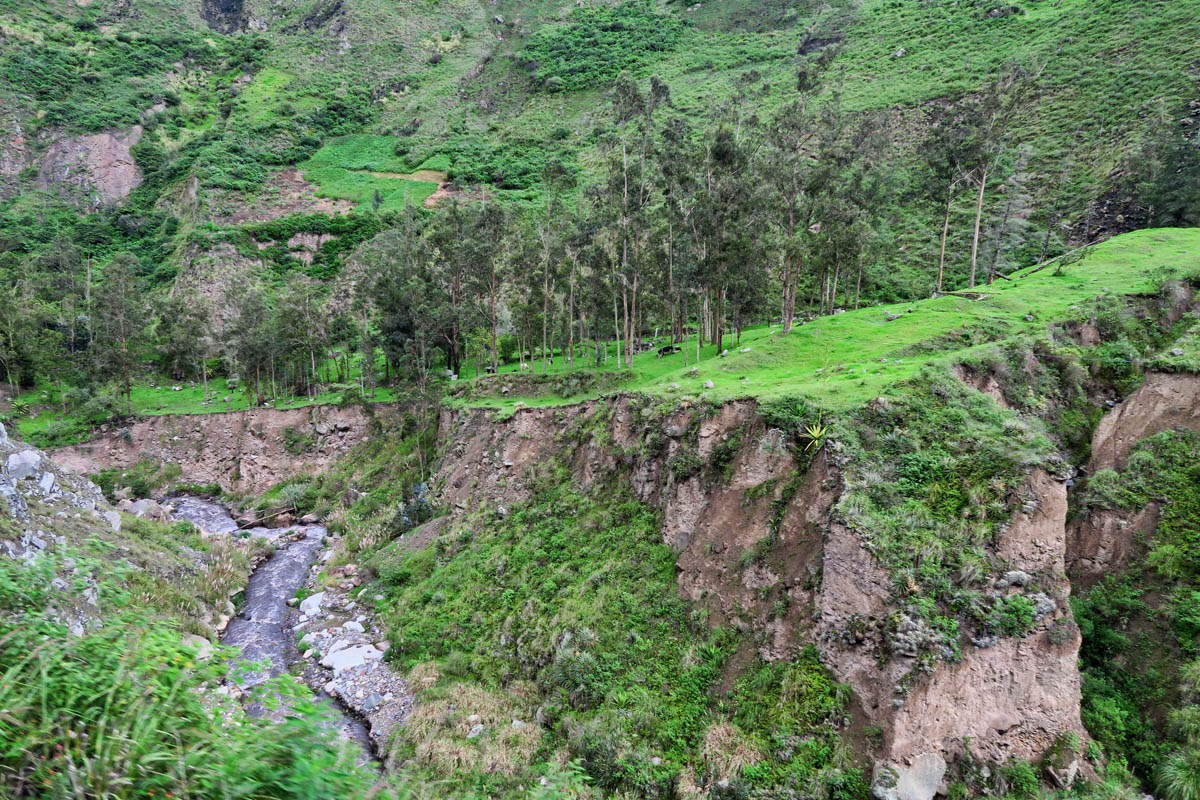 We will be passing through the Chanchan River gorge. 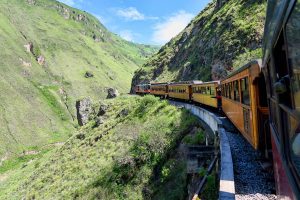 I like the curves the best, for views of the train. 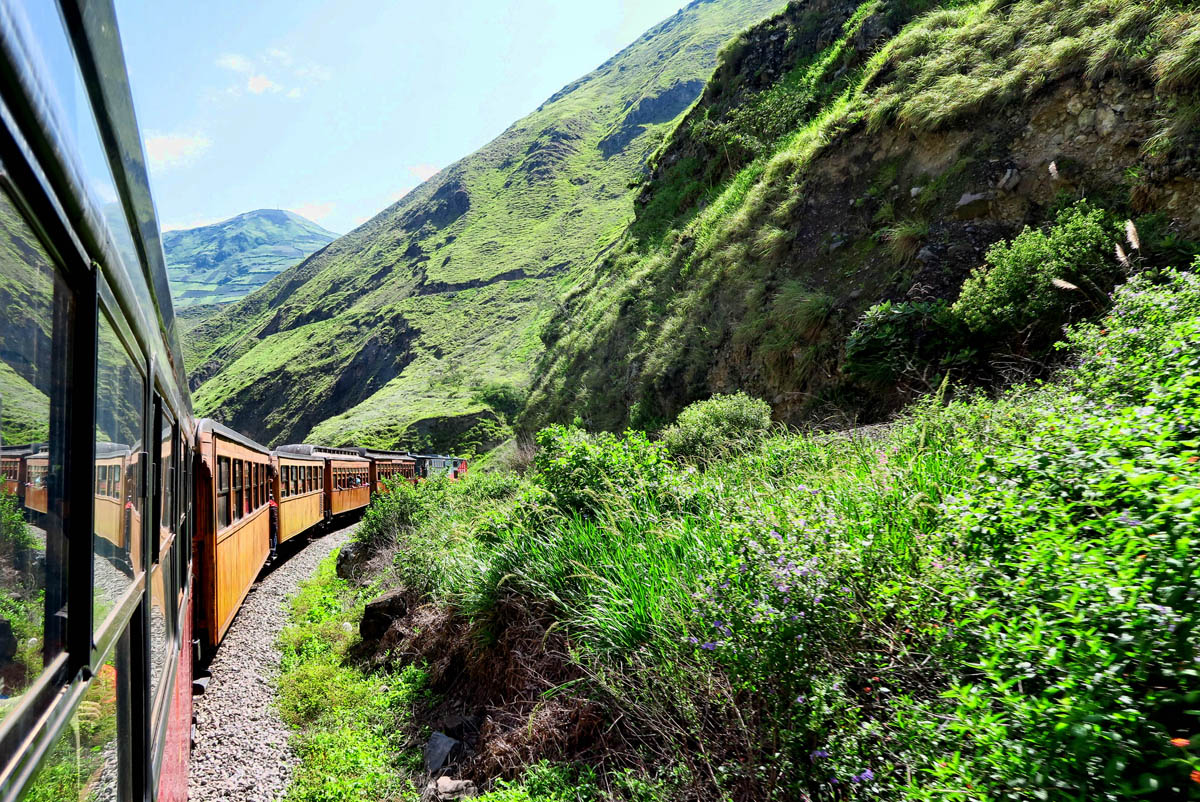 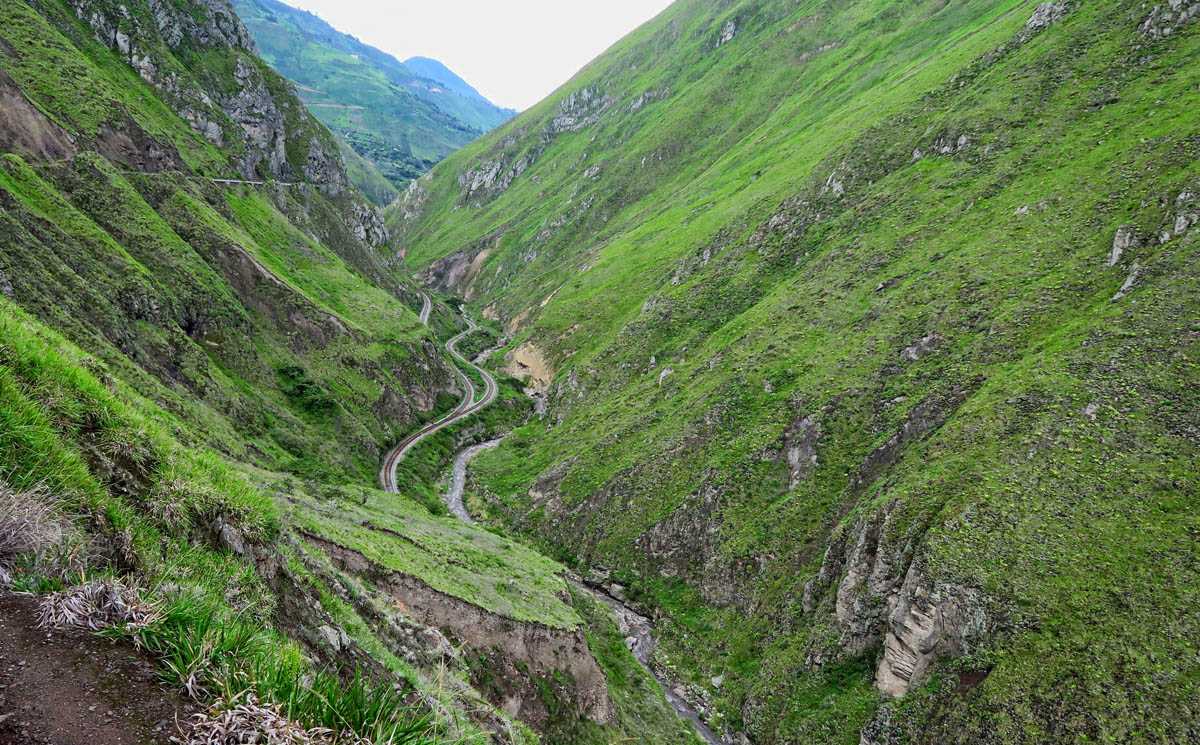 You can see below one of the switchbacks where the tracks divide. 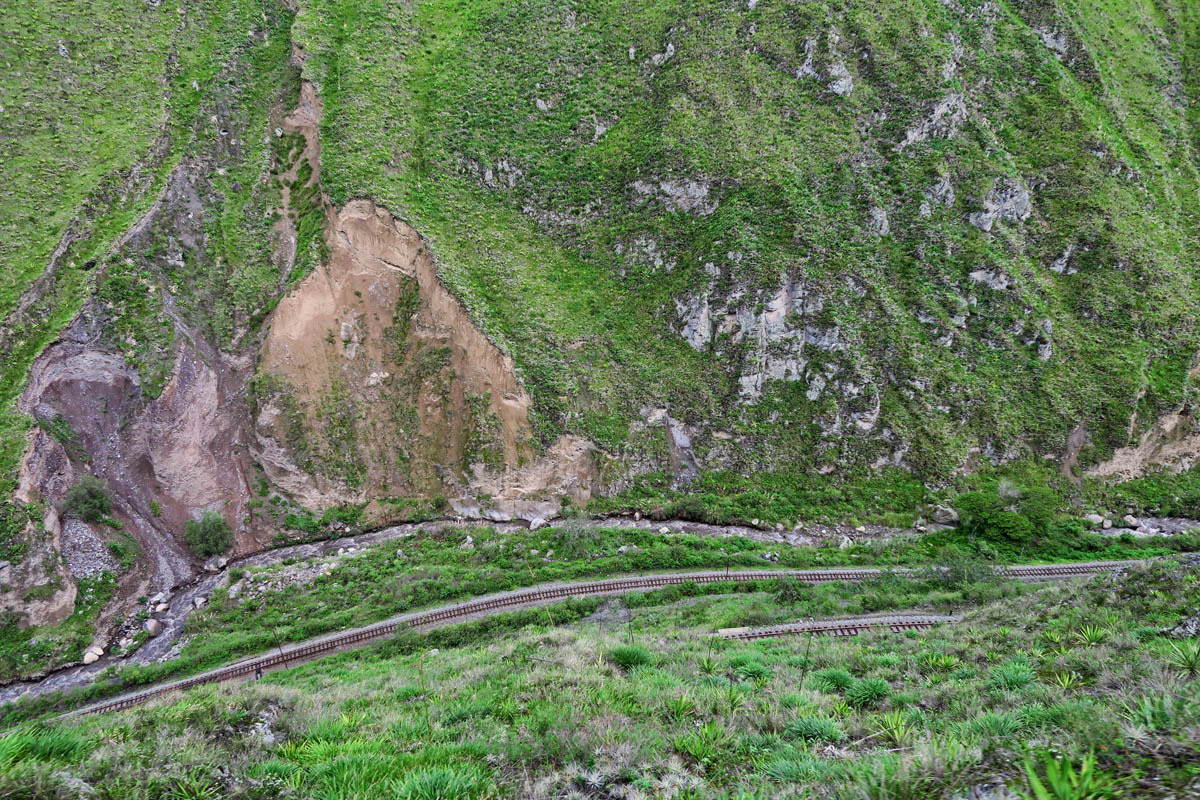 Higher and lower track below, part of the zigzag to get down the mountain. 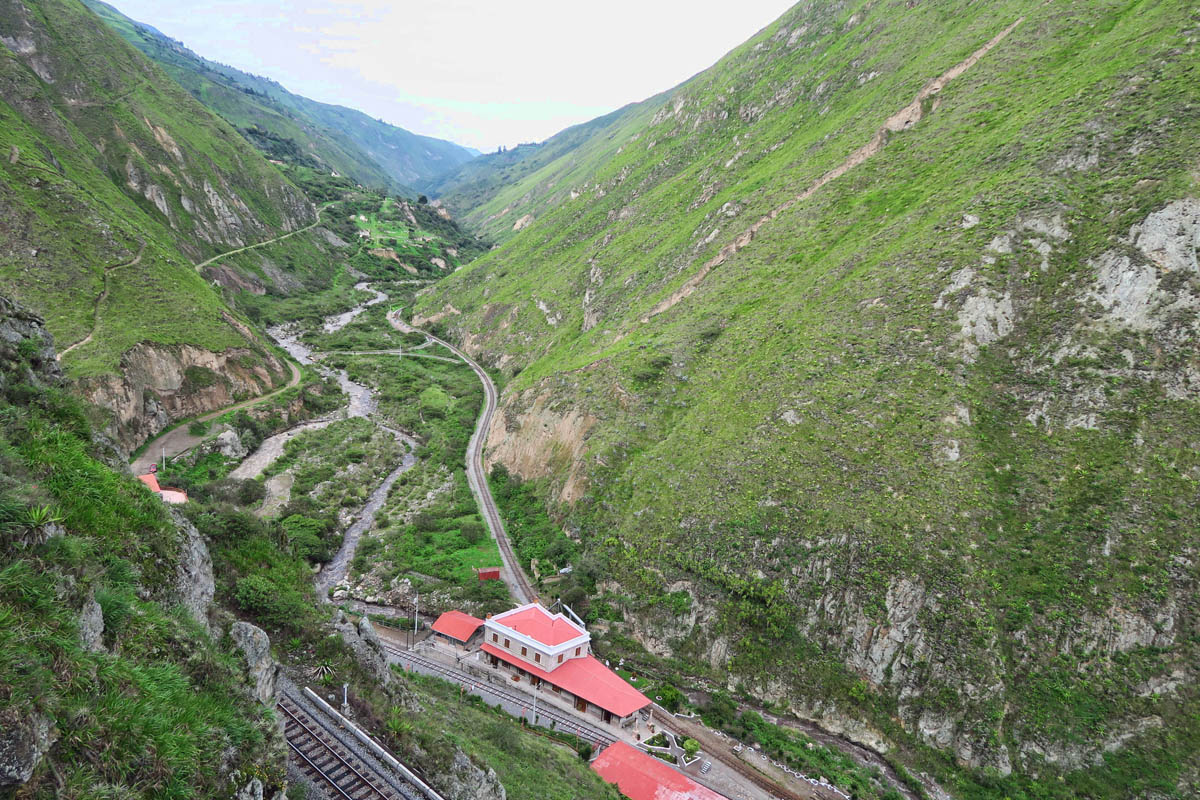 Red roofed building is our termination before we begin the climb back up. We will be there for an hour.

Now, the train serves a different purpose with the only remaining stretch from the original railway remaining being the 7.5 mile section operated as a tourist train from Alausi to Sibambe and return.

The Wanderbus makes a brief stop in Alausi, origin point of the Nariz del Diablo train, just long enough to drop off and pick up travelers interested in making the train journey. Alausi is a tiny town that likely would be a speck on the map were it not for the famous train. 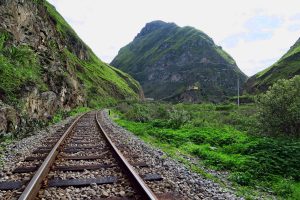 This is “the Nose.” If you imagine the Devil lying down, face up, you can sort of see the resemblance. 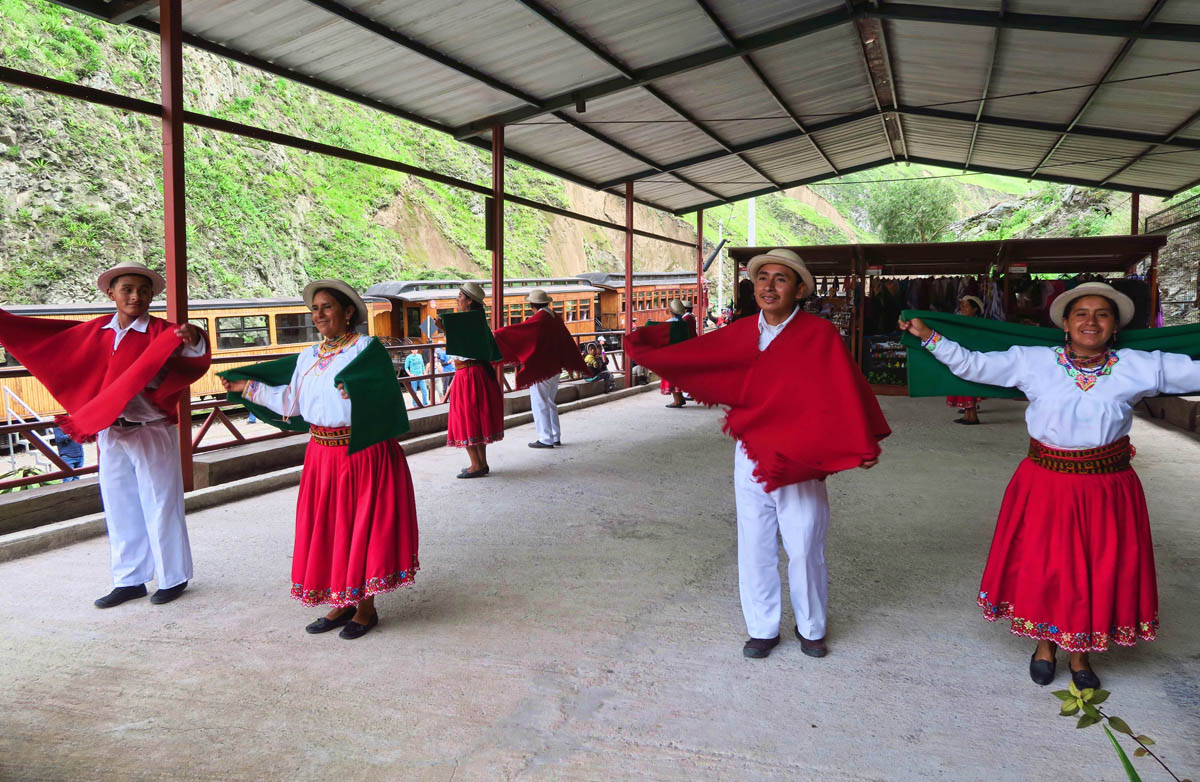 We are entertained during our stop by the folk dance troupe. 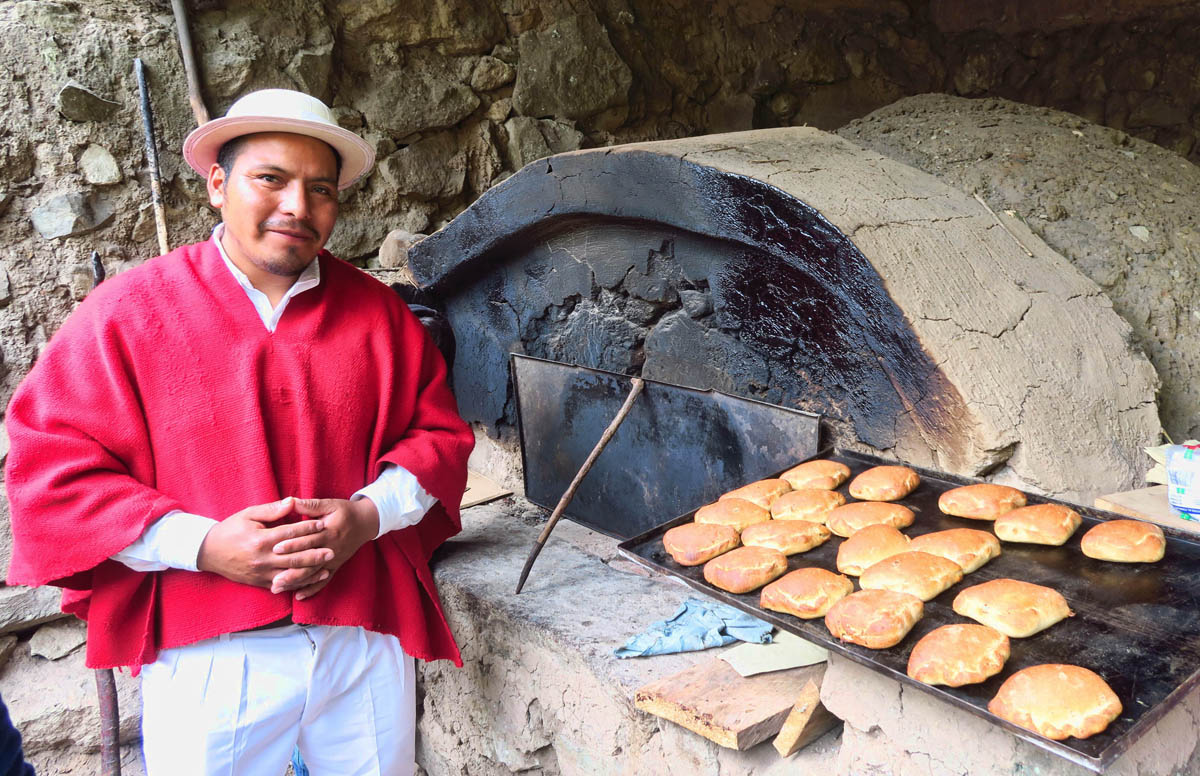 They are also demonstrating some of the methods used by their ancestors. They are selling these bland bisquits for 25 cents. One bite, and I was looking for a trash bin. 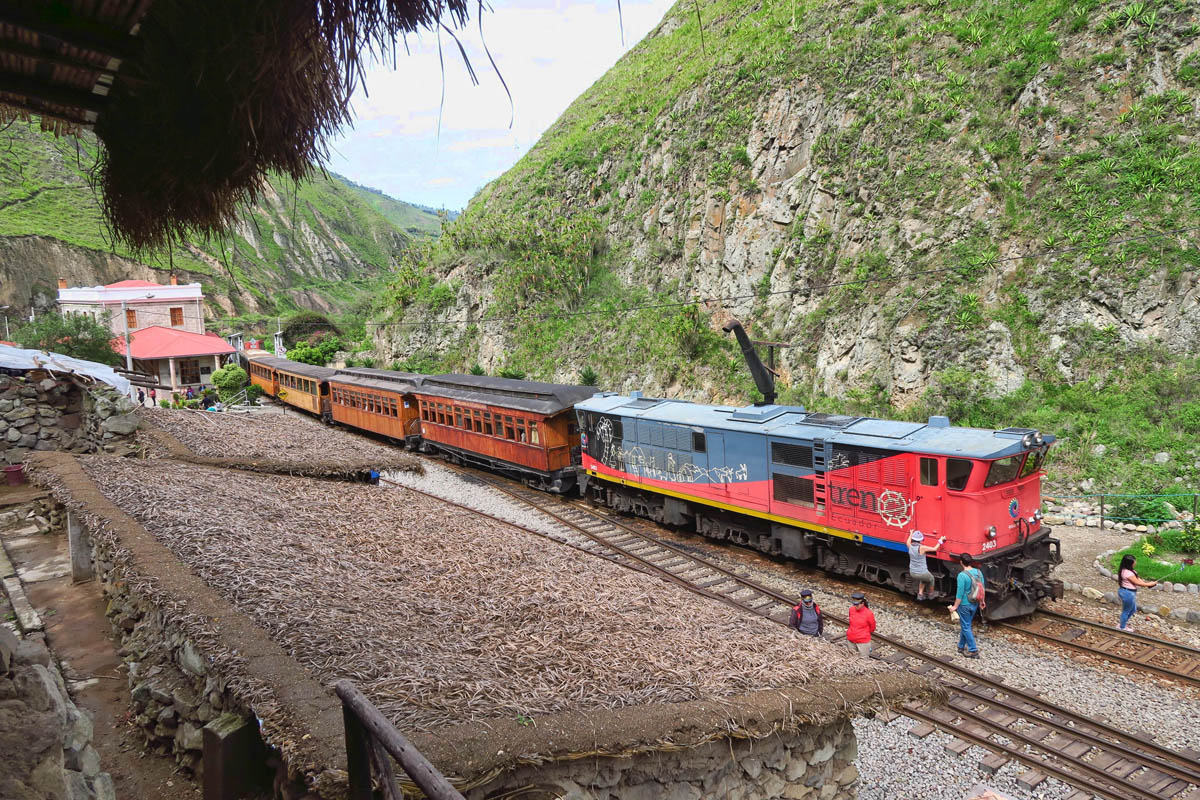 They have a “living museum” along the tracks with interpreters showing traditional ways of cooking, extracting juice from sugar cane, hut building, blacksmithing, etc. There is also a rather large cafe selling refreshments. 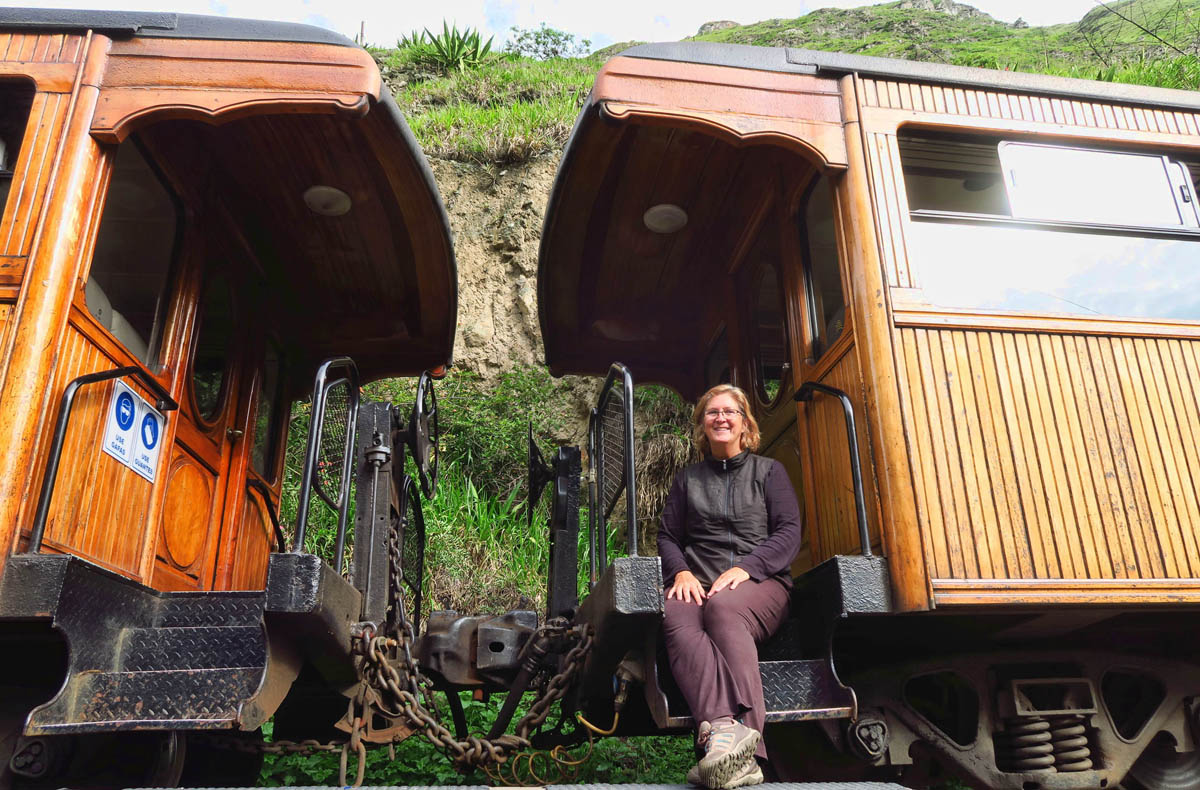 Kat says I should include a picture…

It’s a short journey to the bottom of the nose and back, only two and a half hours, with an hour of that being spent milling around in the tourist station at the end. There’s a folk dance performance and a “living museum” where locals reenact the life of their ancestors. It’s a bit corny, as I would have much preferred more time on the train. But that’s about all the track that is left! Only the most noteworthy remains, the infamous switchbacks.

The train pulls beyond the bifurcation, while the switchman flips the lever to change tracks. Then the train backs up toward the opposing switchback, zigzagging its way up and down the nose, much to the delight of tourists and train nuts alike! 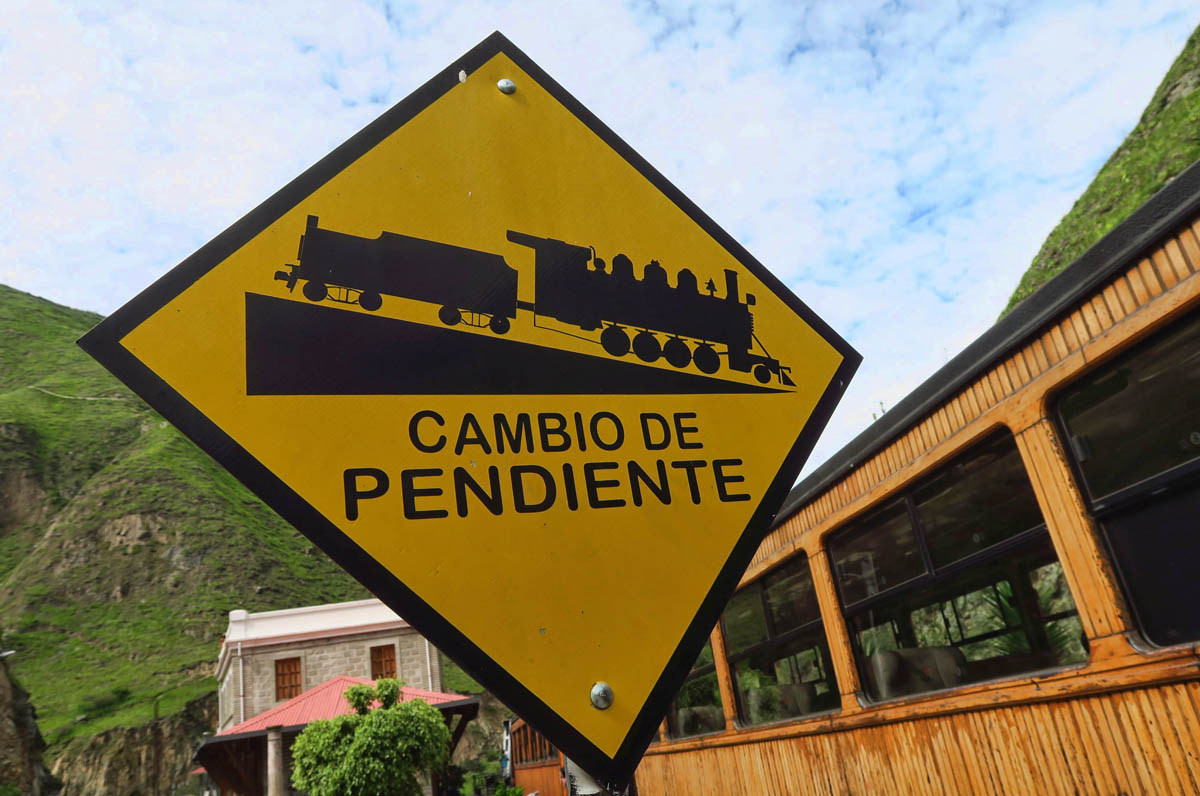 Cambio de Pendiente, or change of slope or grade. You see this sign often on the train, particularly where the tracks change. 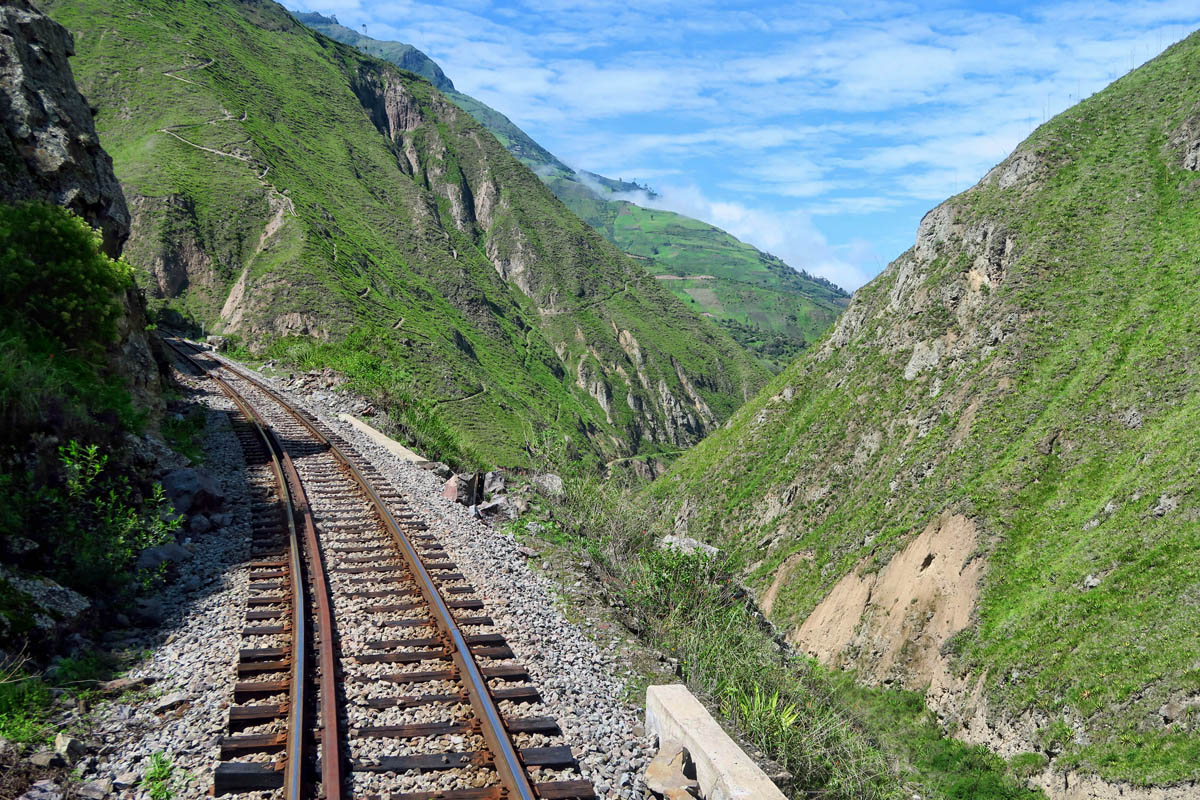 While in the station, the engine reversed ends. My car while originally first behind the engine is now the caboose. This gives me the perfect vantage point to photograph the switchbacks once the train reverses direction. 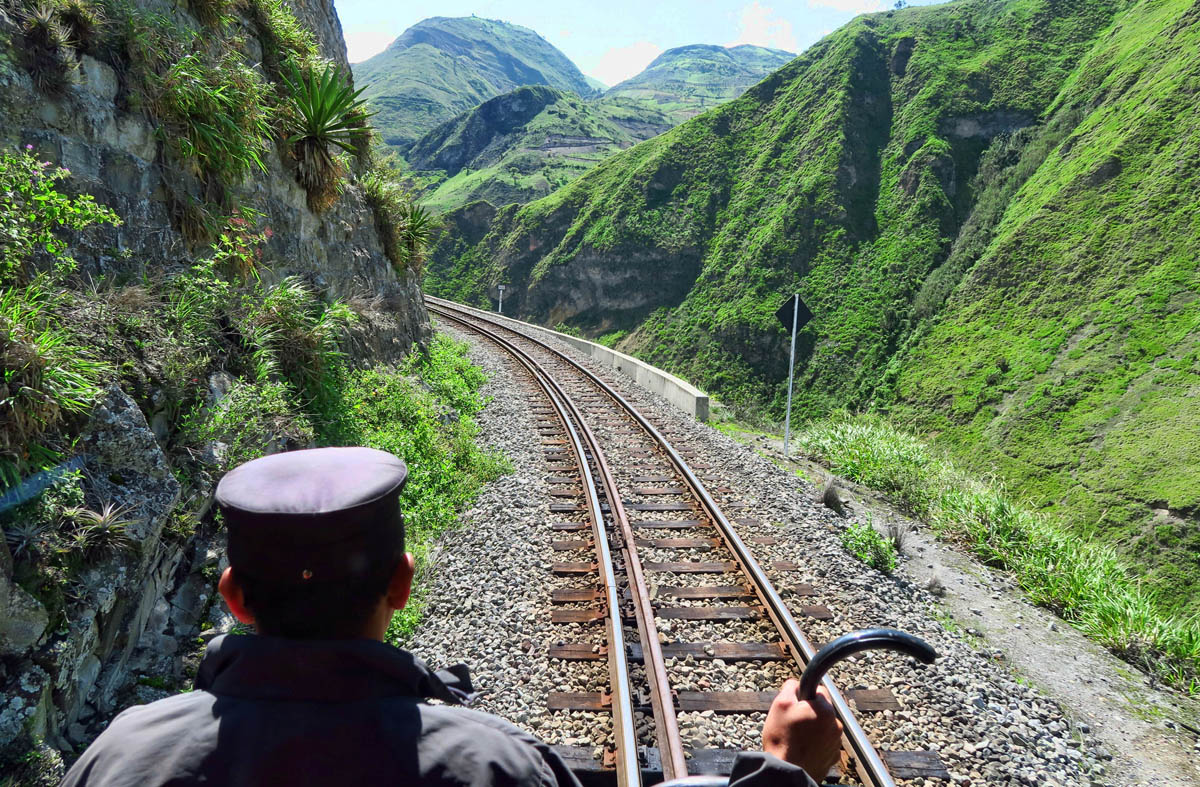 Here we are approaching the bifurcation point. 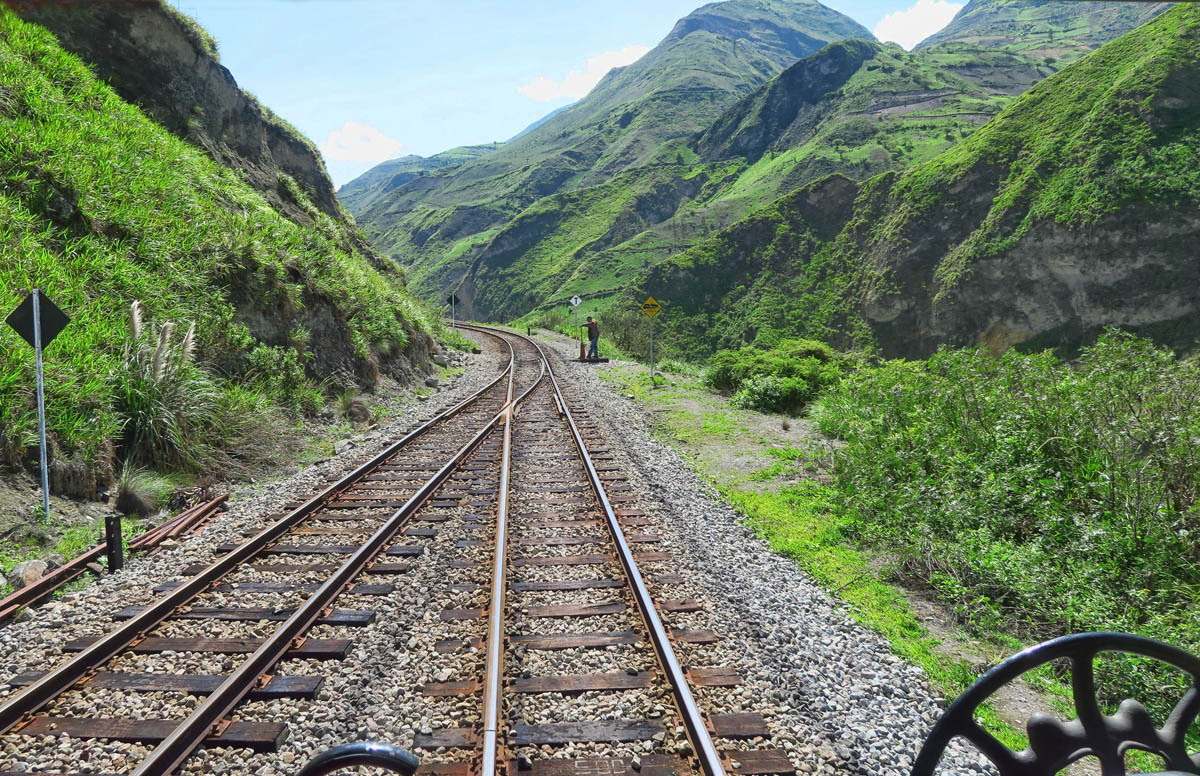 We are backing into the single track from the lower track on the right side. 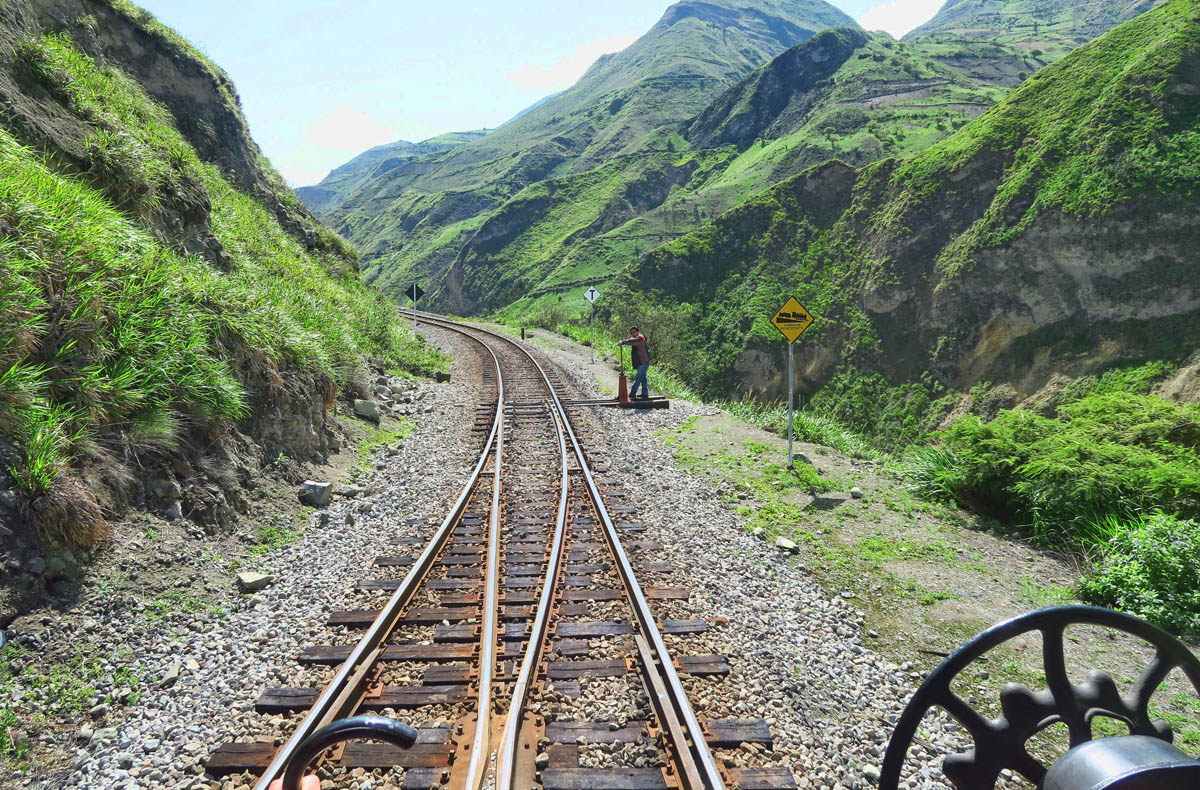 The “switchman” waits for us to pass so he can switch the tracks. 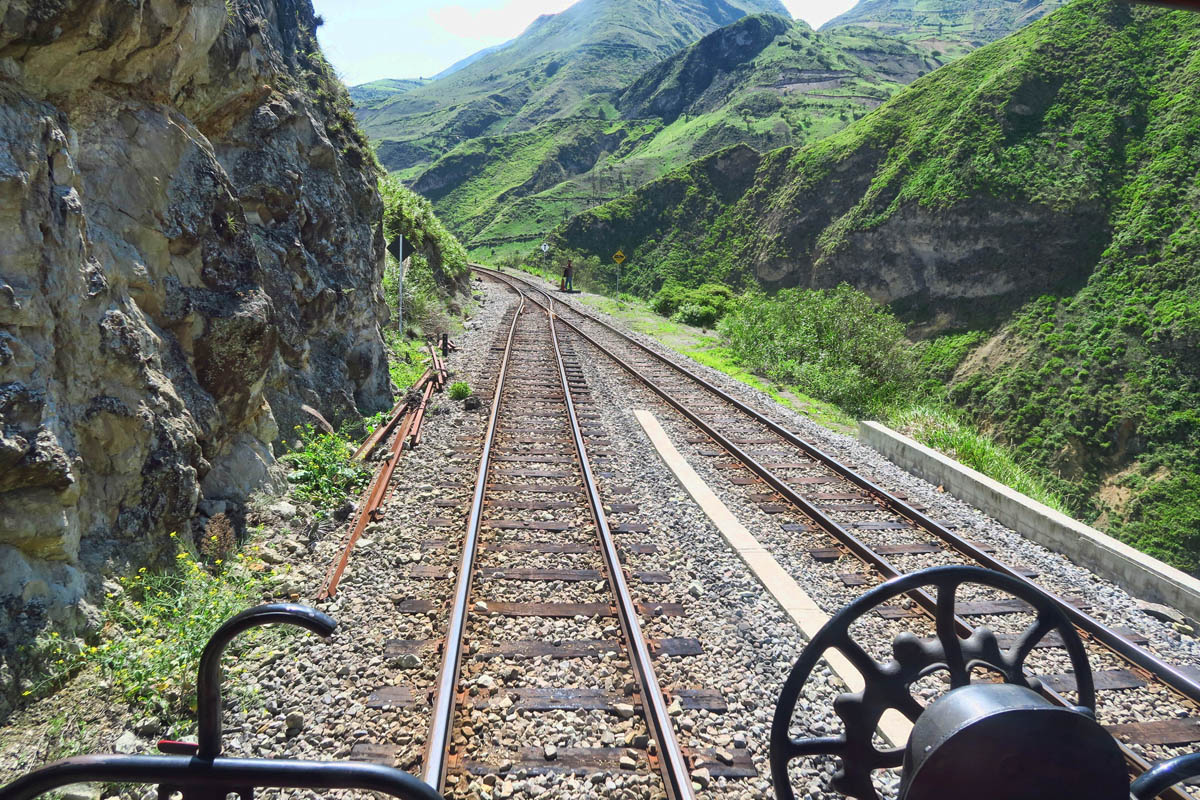 We are now leaving the bifurcation point on the higher track on the left side. 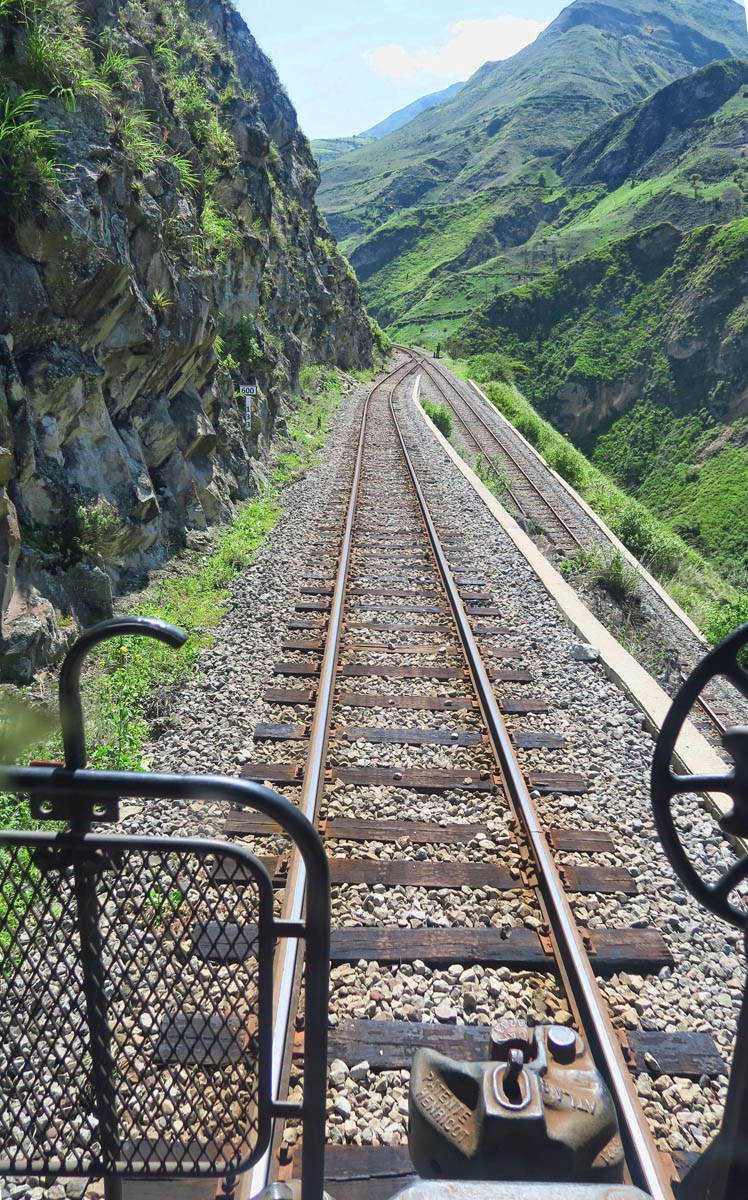 You can now see we are gaining elevation over the parallel track on the lower side on the right.

So was it worthy of a stop? Well, if you are a train enthusiast like I am, most definitely! But if it’s not along the way, maybe not, given the remoteness of the area and the lack of anything else going on in Alausi. Or so I thought…

16 thoughts on “Riding Rails Up the Devil’s Nose”