Just about 4 miles outside of the Lisbon city center along the Tagus River is the parish of Belém. While still considered part of Lisbon, it requires a change from the metro to a regional train to get there. And it has a very different feel to it, much more focused on the waterfront. It’s also got to be one of the biggest tourist attractions in the area, and for good reason. There is so much to see within two or three city blocks that I spent an entire day here.

I’ll just get the guilty pleasure out of the way first. Portugal is well known for a sweet treat, the Pastel del Nata, a silky egg custard in an impossibly thinly layered flaky crust, then browned on the top until it blisters and caramelizes. Optional is a final dusting of cinnamon and powdered sugar provided in the “to go” bag. It’s a national treasure, and one you will see in every pastry shop, grocery store, and coffee shop. The Portuguese eat it for breakfast, lunch, dinner, and coffee breaks. And it is yummy. 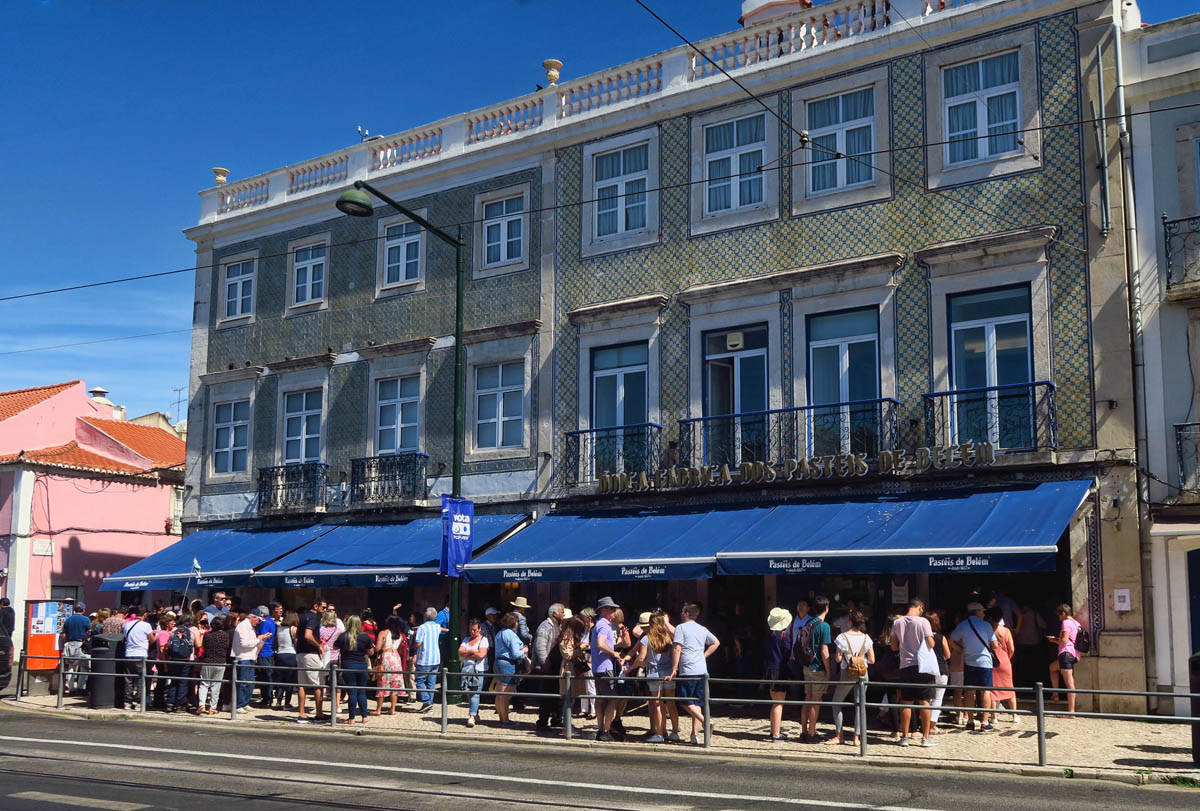 There’s always a line outside of Pastéis de Belém. It’s not as bad as it looks, however. One line is for dining in, and two cashiers dedicated to takeaway. 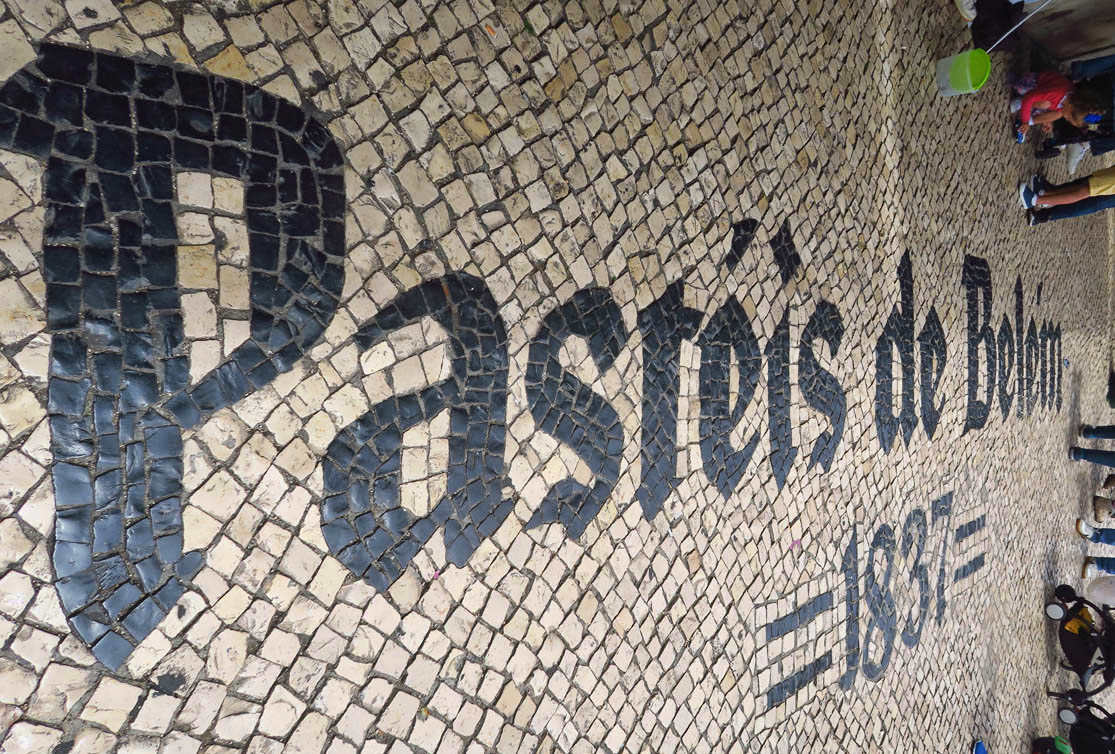 They even have their own calcada, or sidewalk tile noting as being in operation since 1837. 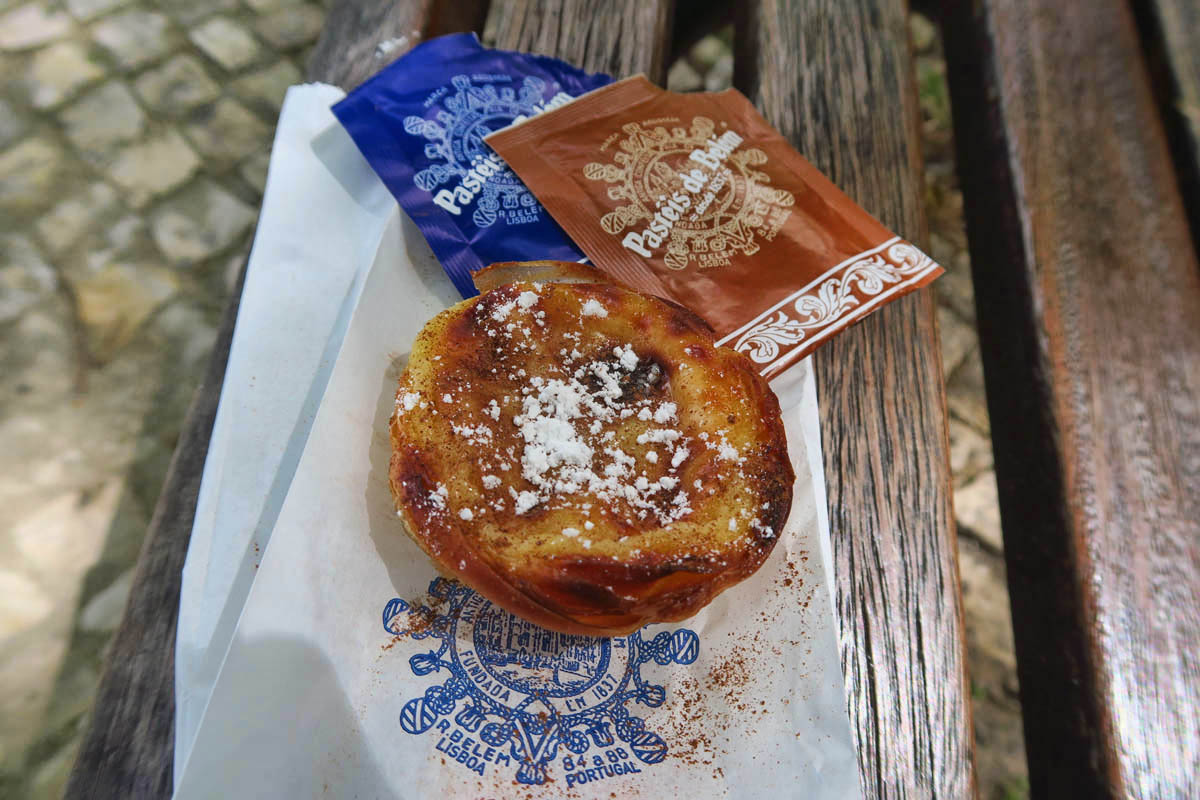 I don’t have enough adjectives to describe this yummy little tart. The blue packet is confectioners sugar, while the brown packet is cinnamon.

But to ratchet that up a level is the Mecca of all pastry shops where the pastry was actually invented. Their recipe even carries the town name, Pastéis de Belém, making custard tarts since 1837.

According to the all knowing Wikipedia, the tarts originated here in the 18th century, made by monks in the Jerónimos Monastery next door. Using egg whites to starch their fabrics left them with an abundance of egg yokes, ergo the egg custard tart was born. Their pastry shop was sold to the local family-owned sugar refinery, who still owns it today. The secret recipe is made behind locked doors. Pastéis de Belém churns out an estimated 22,000 tarts per day, where there’s almost always a line out the door.

The benefit of waiting in line is that you are pretty well guaranteed the tarts you get are hot out of the oven. In fact, mine was so warm, the custard came flowing out of its flaky little dam the minute I took a bite out of it. In one bite, memories of my Mom’s custard, an after school treat, came flooding back. Really, Mom’s was just good old Jello Vanilla Pudding. But she would “doctor it up” adding butter, sugar, vanilla, and sometimes egg yolk to make a rich, creamy custard. I always loved it when it was hot off the stove and still runny. Only instead of browning the top, Mom would cover it with a little waxed paper to stop the milk “skin” from forming as it cooled. But my share was rarely around long enough to cool. 😉 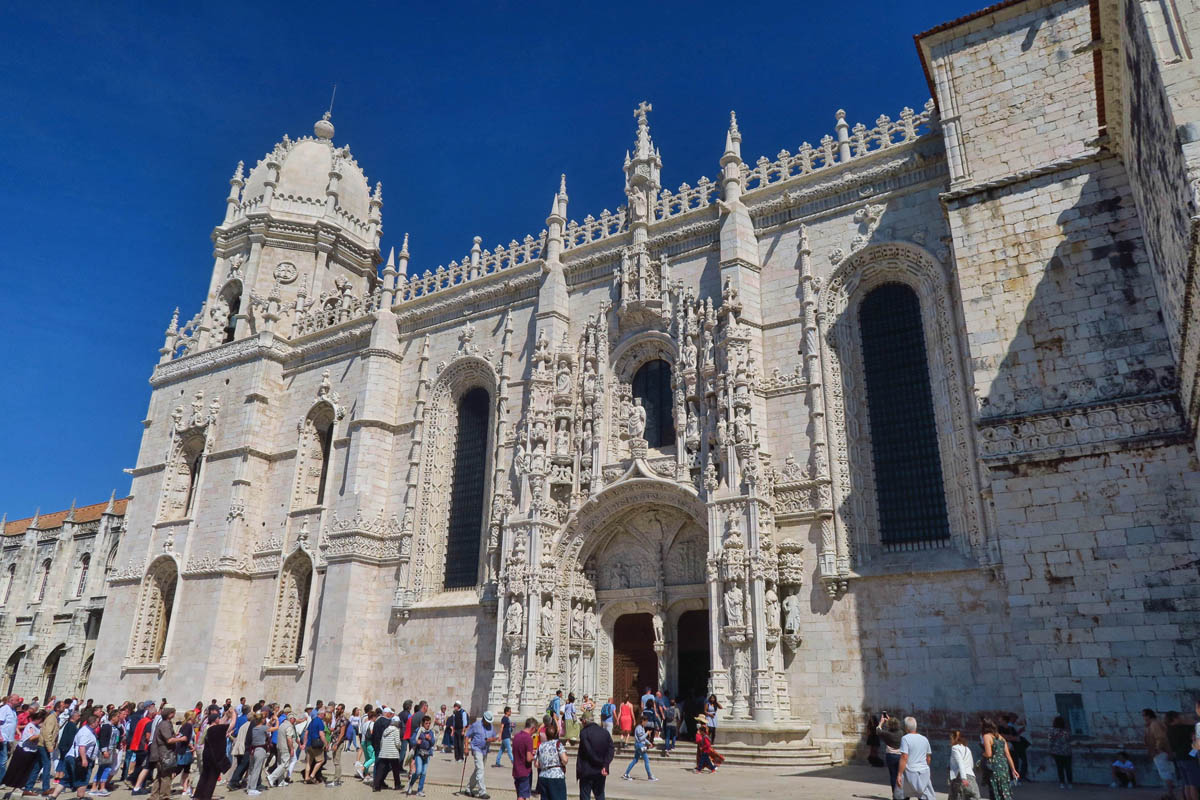 Next door is the Jerónimos Monastery and cloisters. The Lisboa Card is actually a good deal here, because not only is train fare and admission included, but you get to jump the line. 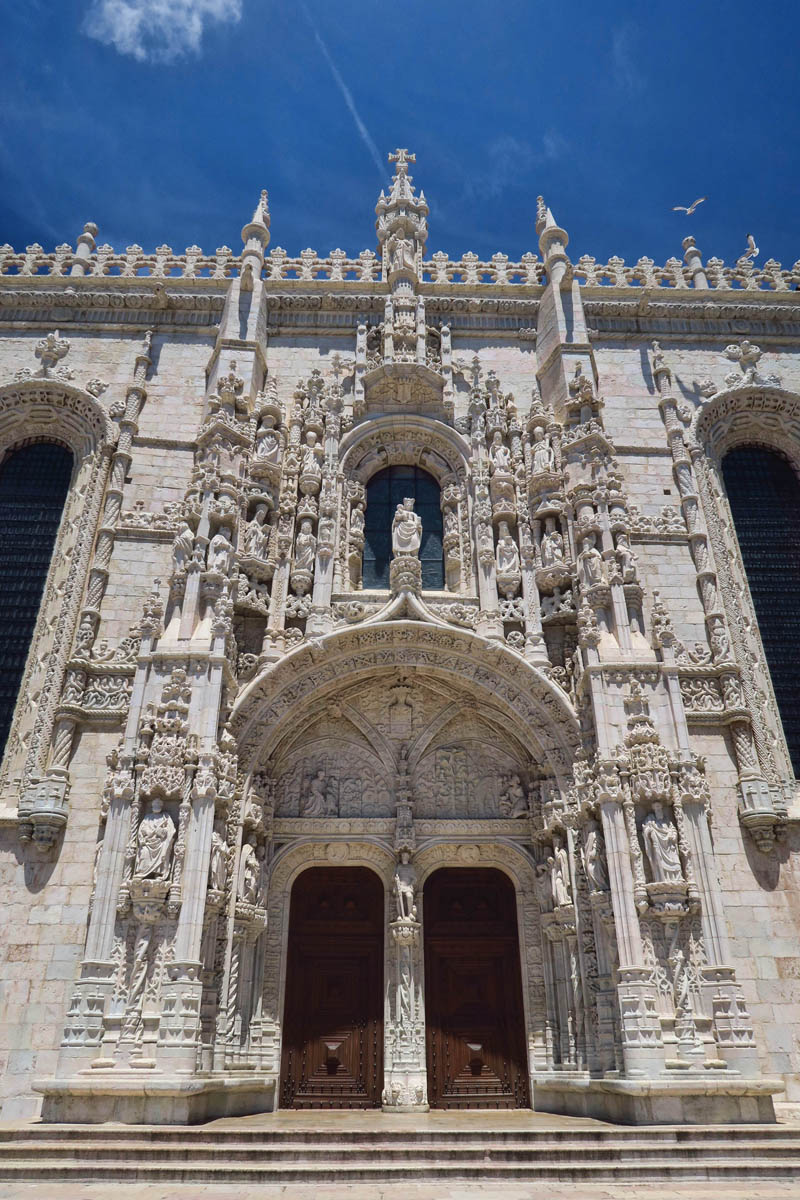 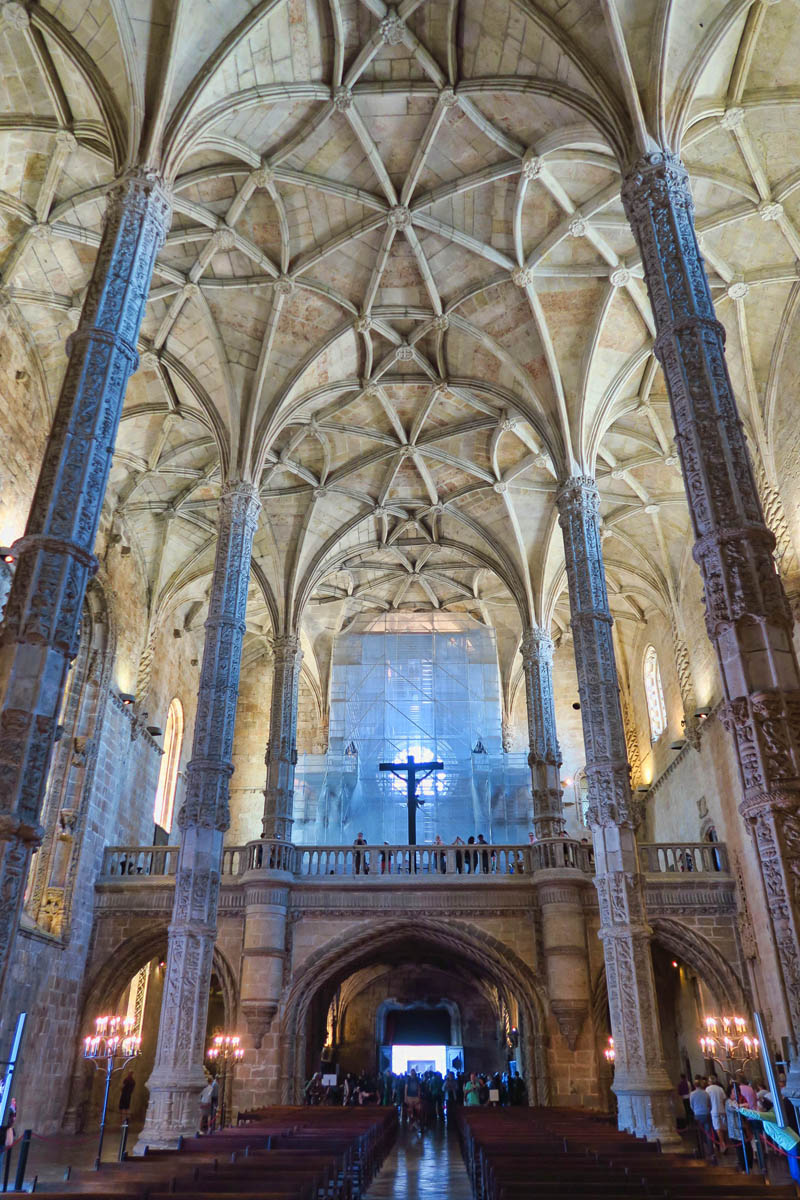 It took 100 years to build the Jerónimos Monastery and adjoining church. It was begun in 1501, and finished in 1601. 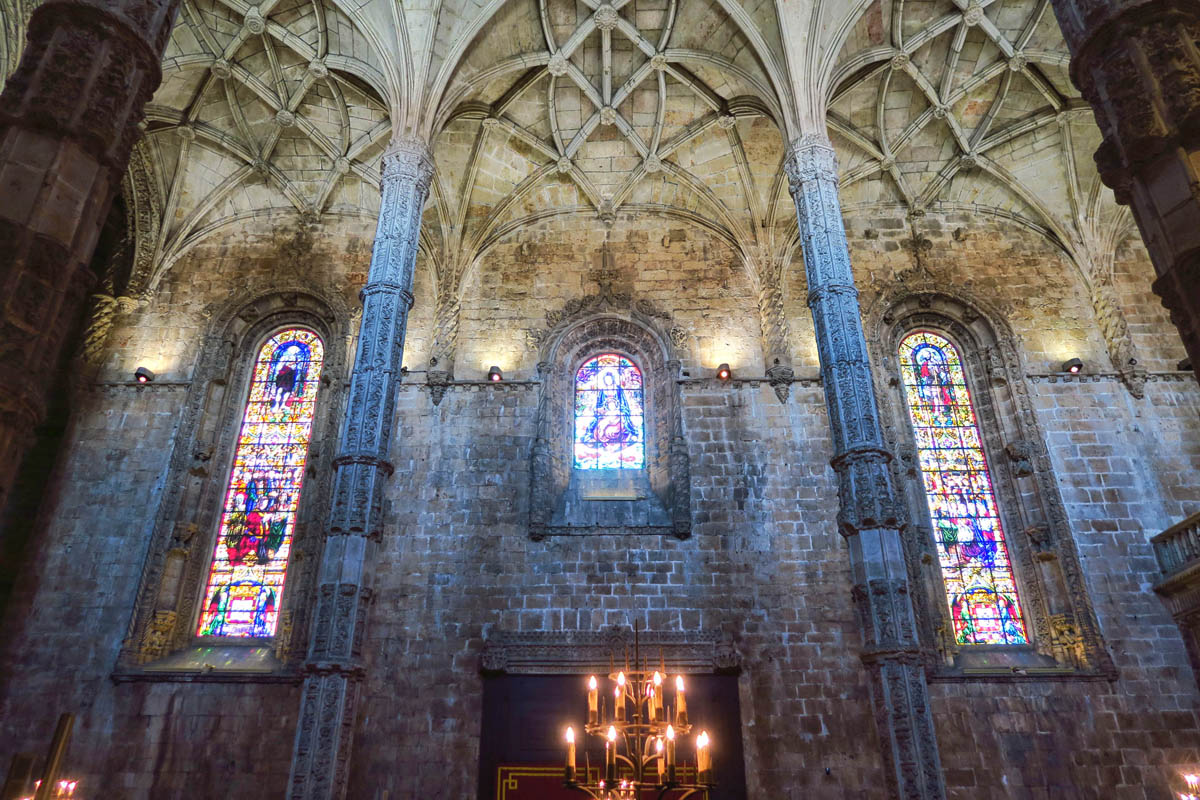 Stained glass windows on all sides. 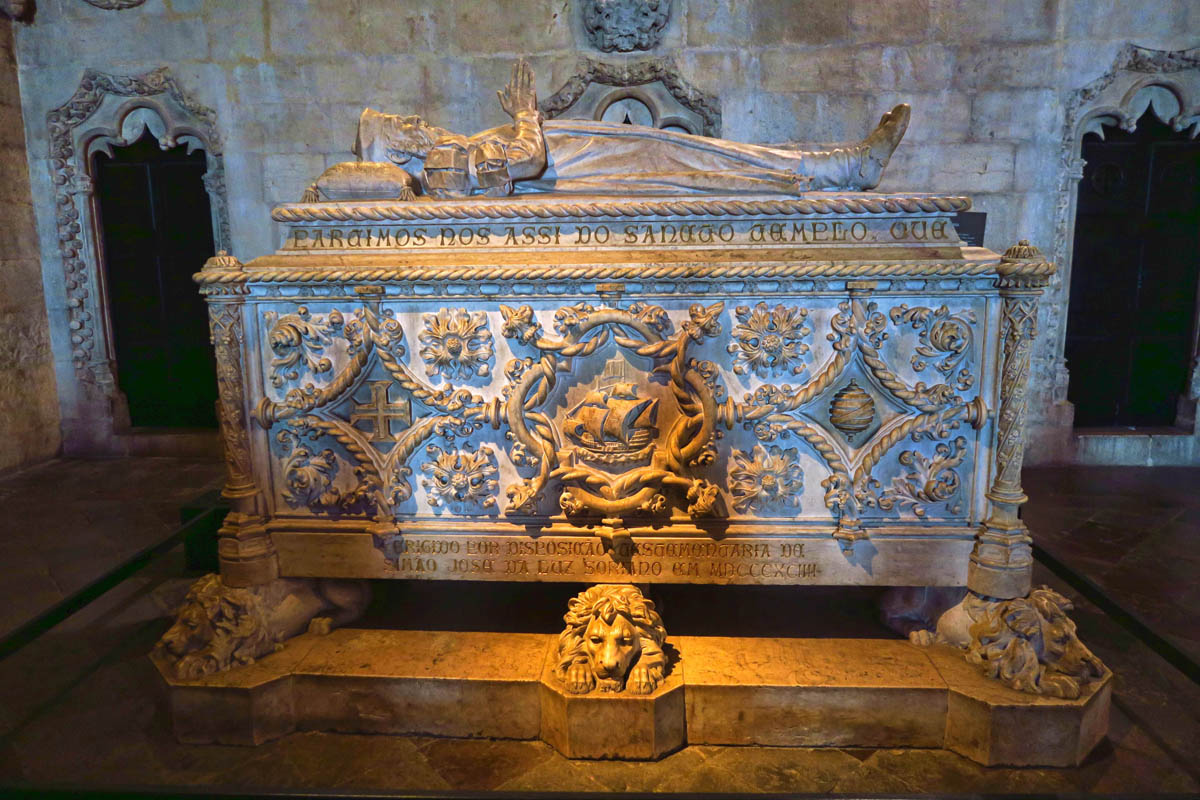 Tomb of Vasco de Gama, Portuguese navigator who established the link between Portugal and India in 1498 establishing a new trade route which would grant the Portuguese supremacy in the Indian Ocean for over a century. 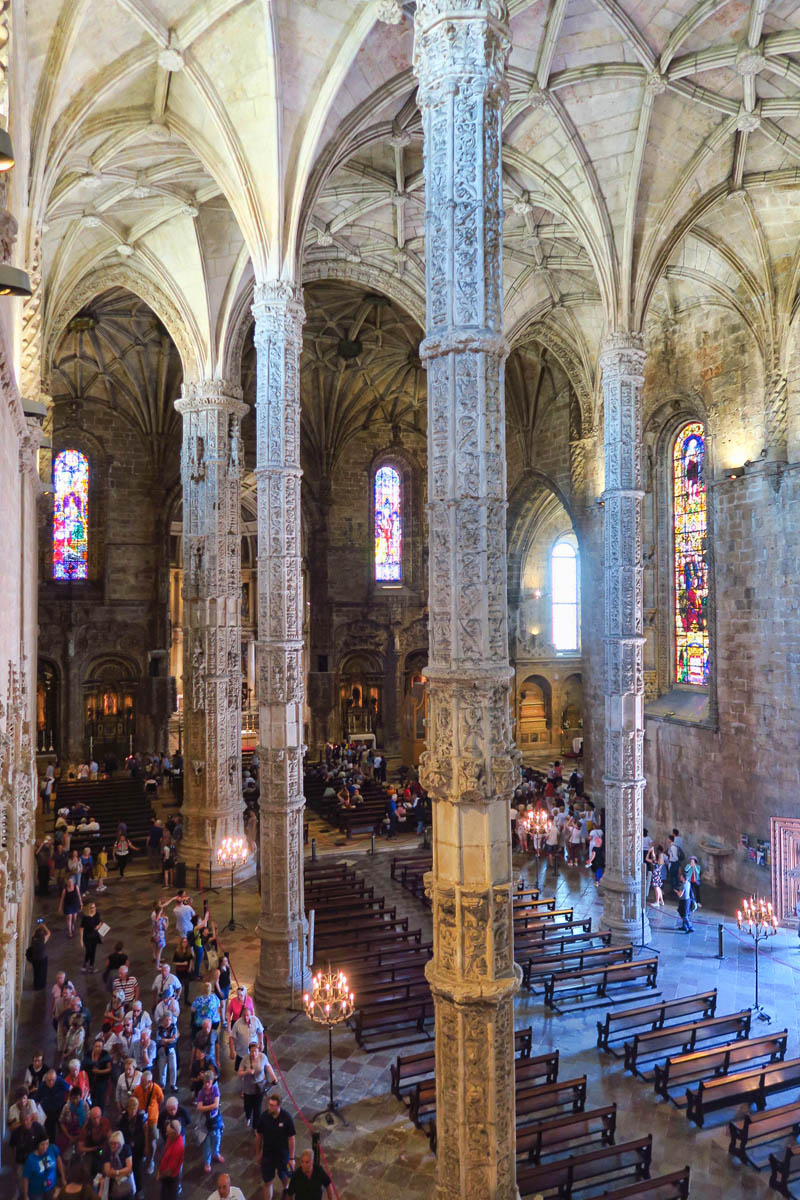 Inside, the columns look like giant tree trunks. This view is from the upper choir.

The Mosteiro dos Jerónimos, or the Jerónimos Monastery from which the tantalizing tarts originated is right next door. Originally founded in the early 1500’s, its purpose was to comfort seafaring sailors while in port. Paid for with a tax on spices from Africa and India, the elaborate complex was built to commemorate Vasco de Gama’s passage to India, and in fact, de Gama is entombed here.

Even if one is feeling “churched out” as can easily happen in Portugal with so many beautiful baroque and Gothic churches, it’s still worth a visit to the cloisters. It’s like stepping into a life-sized honeycomb, with spires, portals, and arches dripping in filigree motif.  Both sites were designated as a UNESCO World Heritage Site in 1983.

Both the church and the cloisters are considered some of the best examples of Portuguese “Manueline style,” named for King Manuel I who reigned 1495–1521. This style incorporates nautical elements in the carvings such as twisted ropes, knots, ships, anchors and seashells. 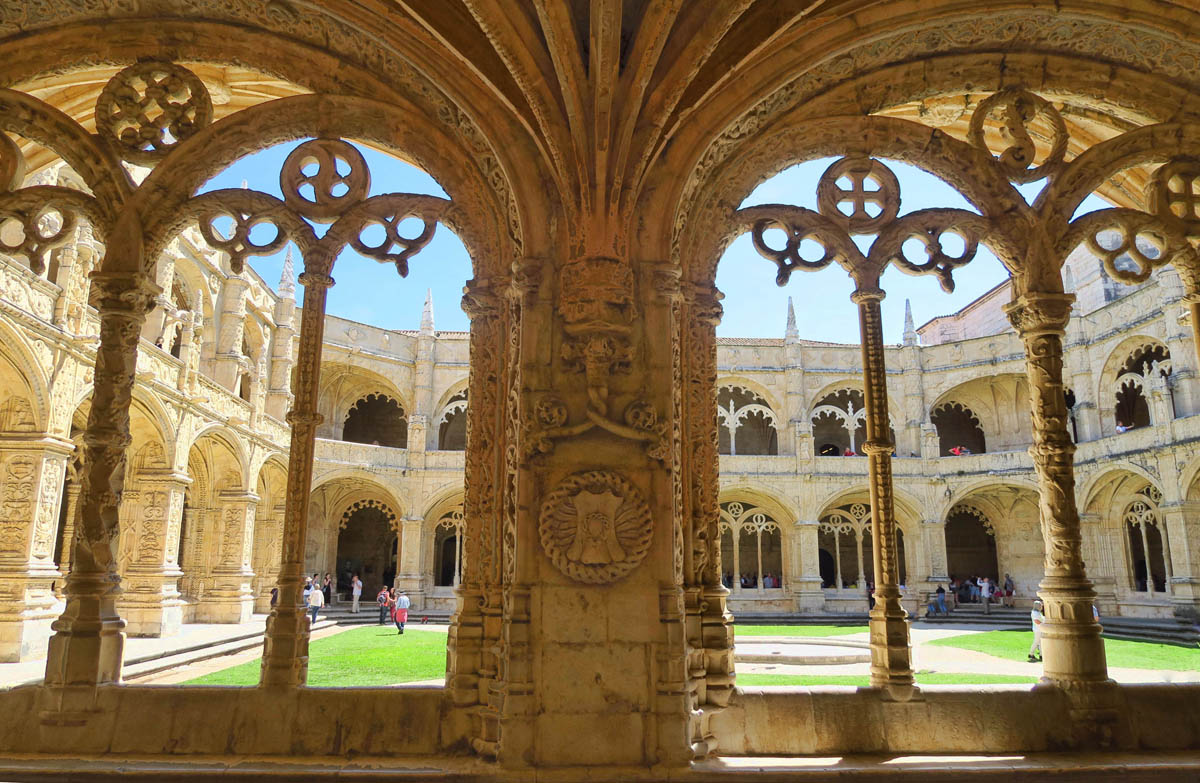 Cloisters are a photography hobbyist’s dream. 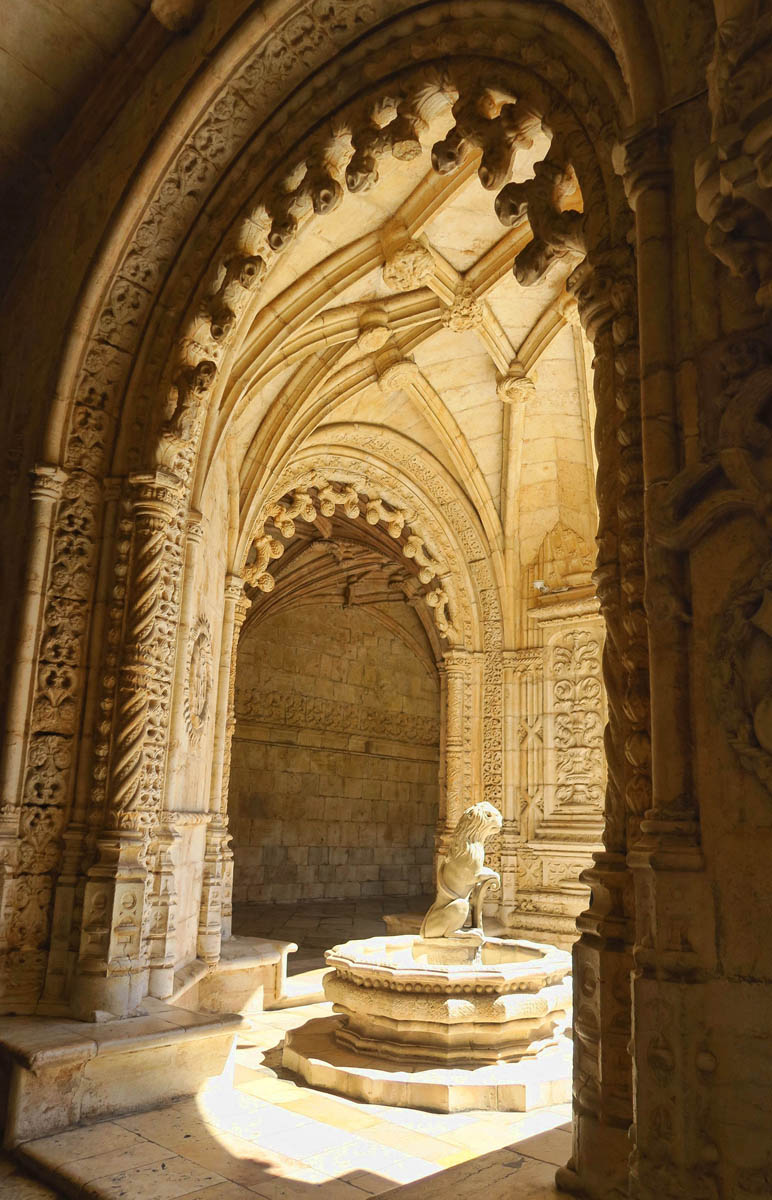 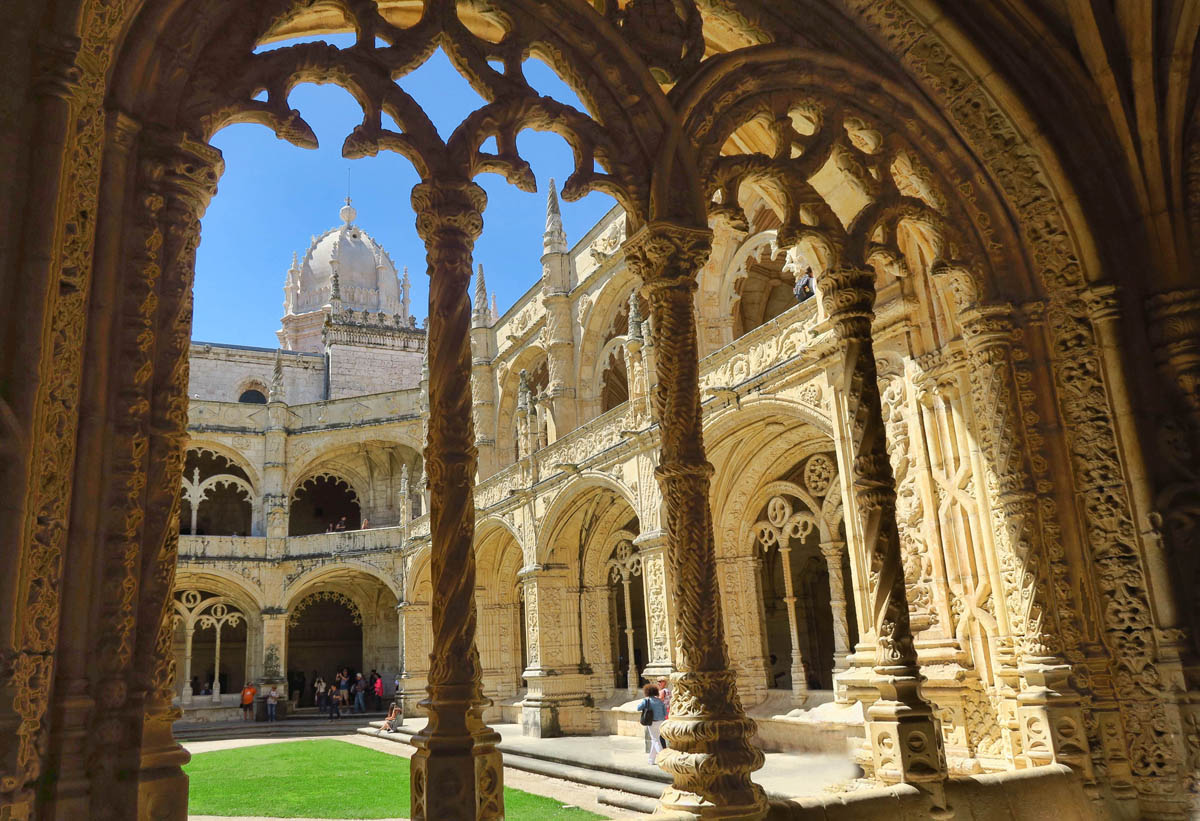 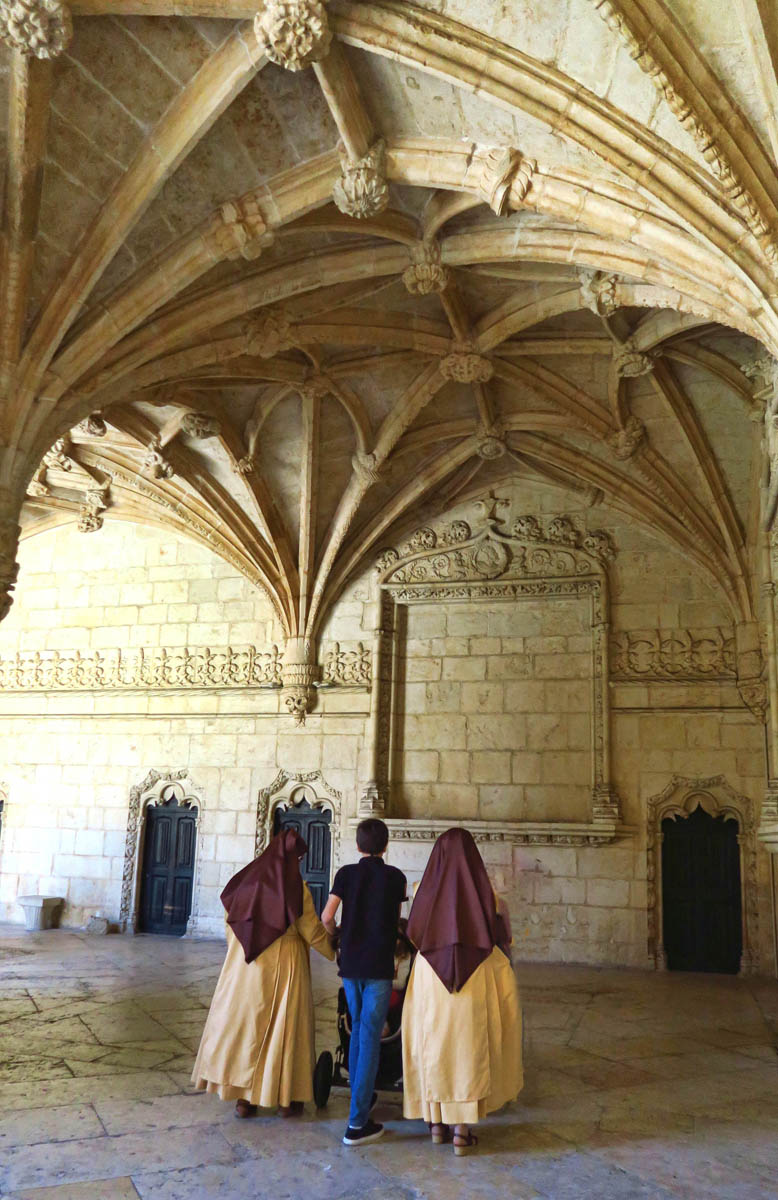 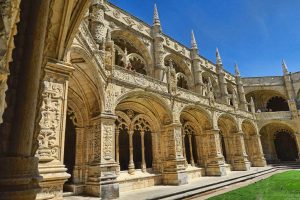 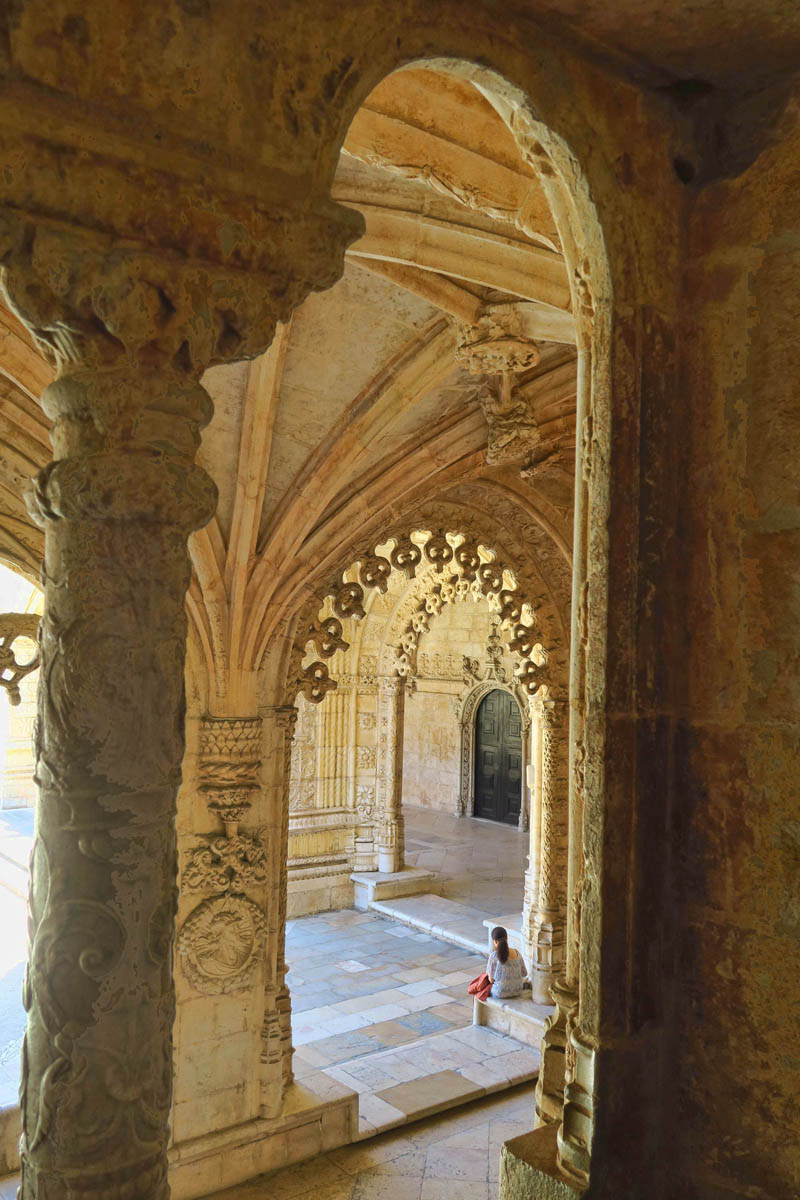 Another example of this Manueline style architecture is the nearby Torre de Belém, or Tower of Belém, built between 1514 and 1520, also designated as a UNESCO World Heritage site. It once served as part of Lisbon’s Defense System, but has also served as a prison (1589,) a customs post (1655,) a telegraph station (1810,) and a lighthouse (1865.) When built, the 100 ft, four story tower was on an island in the Tagus River. Now, it sits just offshore, requiring a small wooden bridge for access. 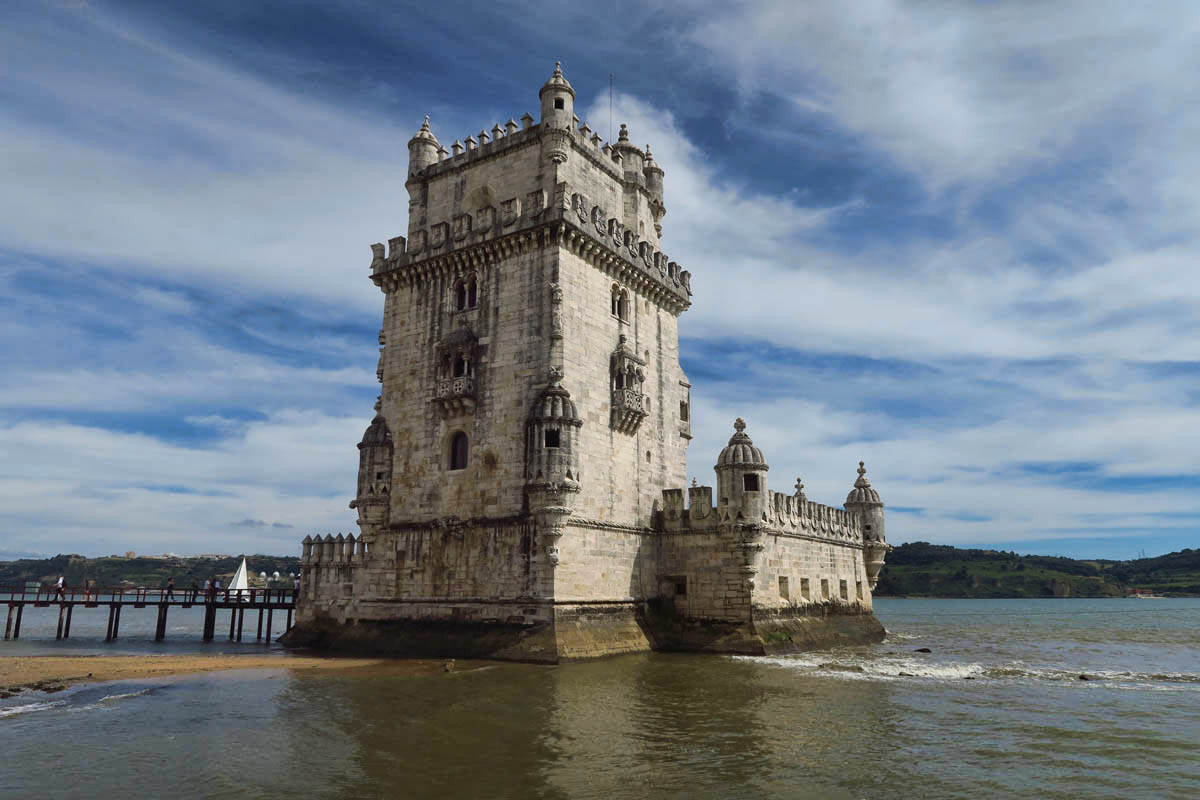 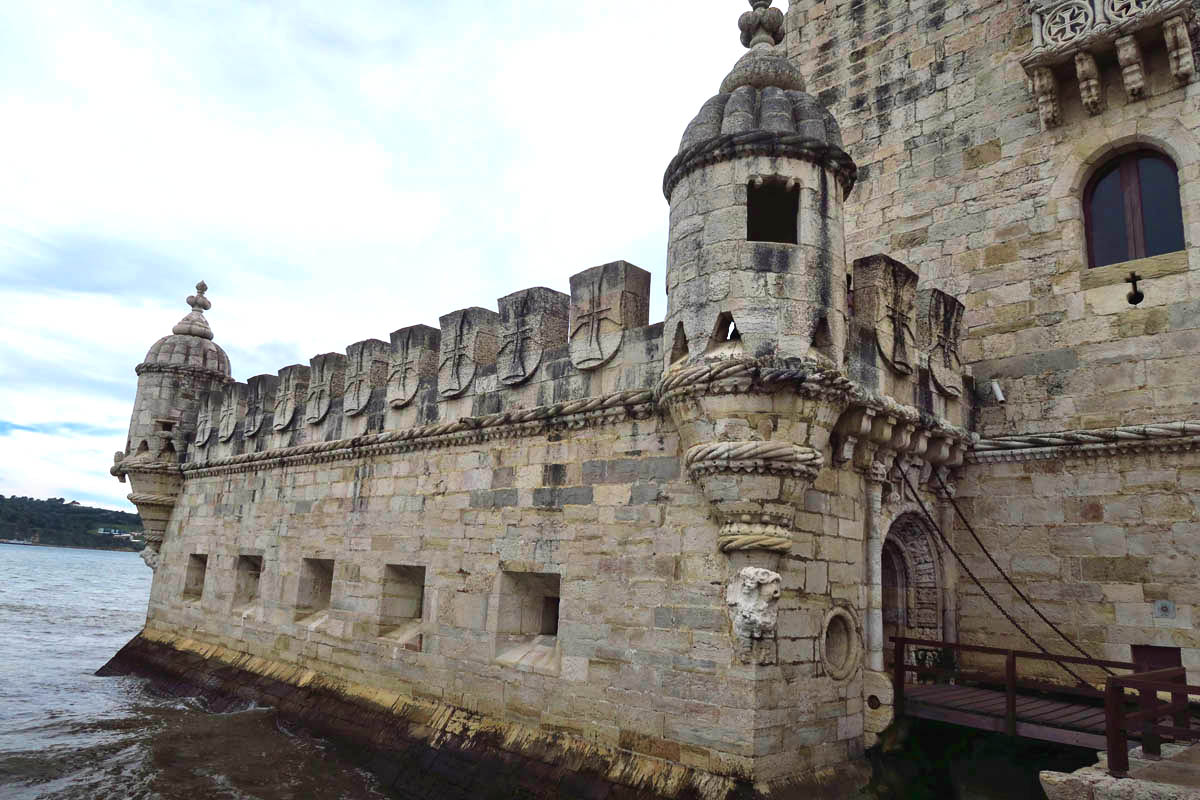 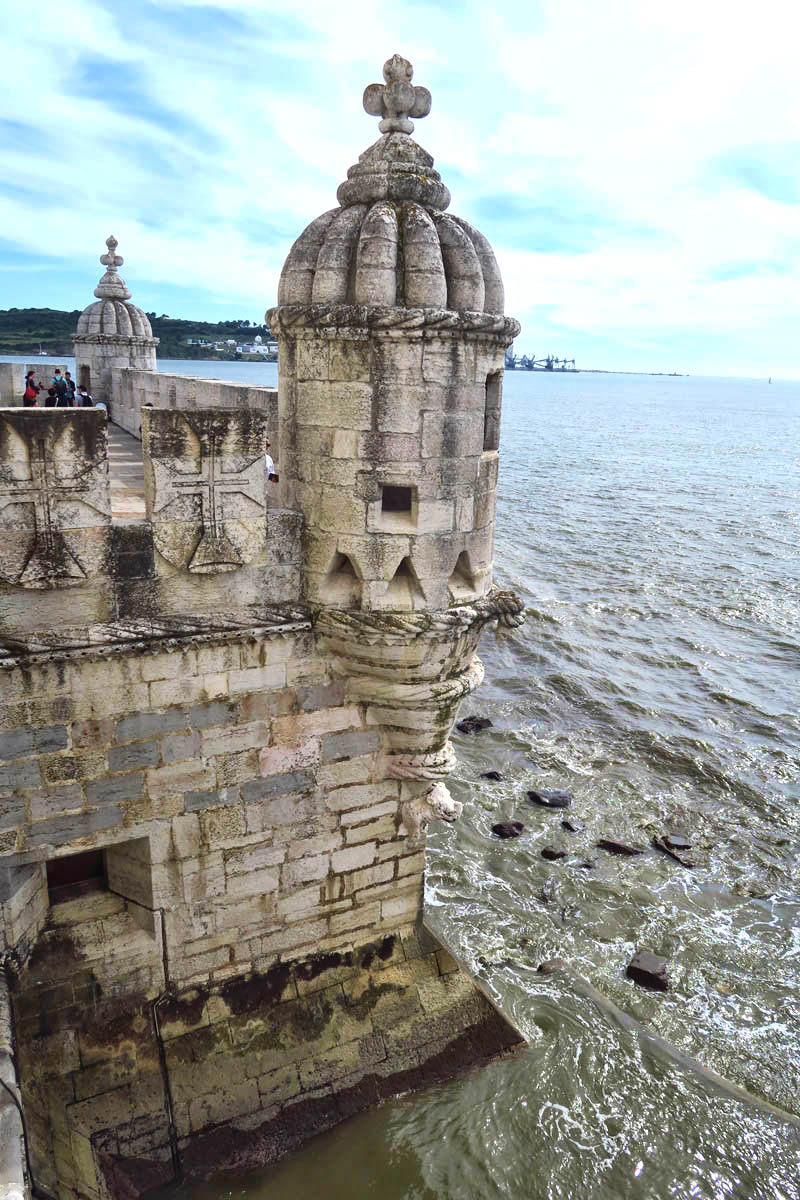 It’s possible to climb the narrow spiral staircase to reach the top of the 100 ft tower. 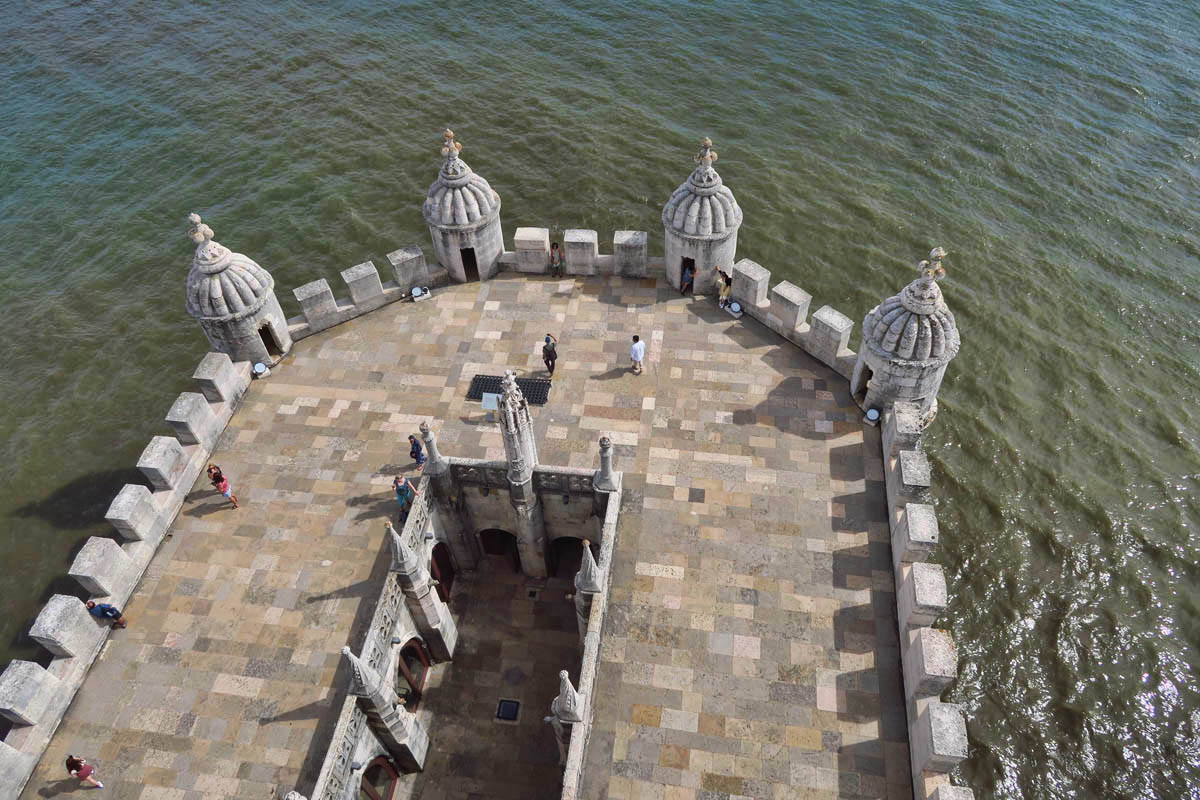 The staircase is so narrow it’s not possible to meet another person, so there is a sophisticated red light/green light system that tells you when the coast is clear for you to enter the staircase going up or down. 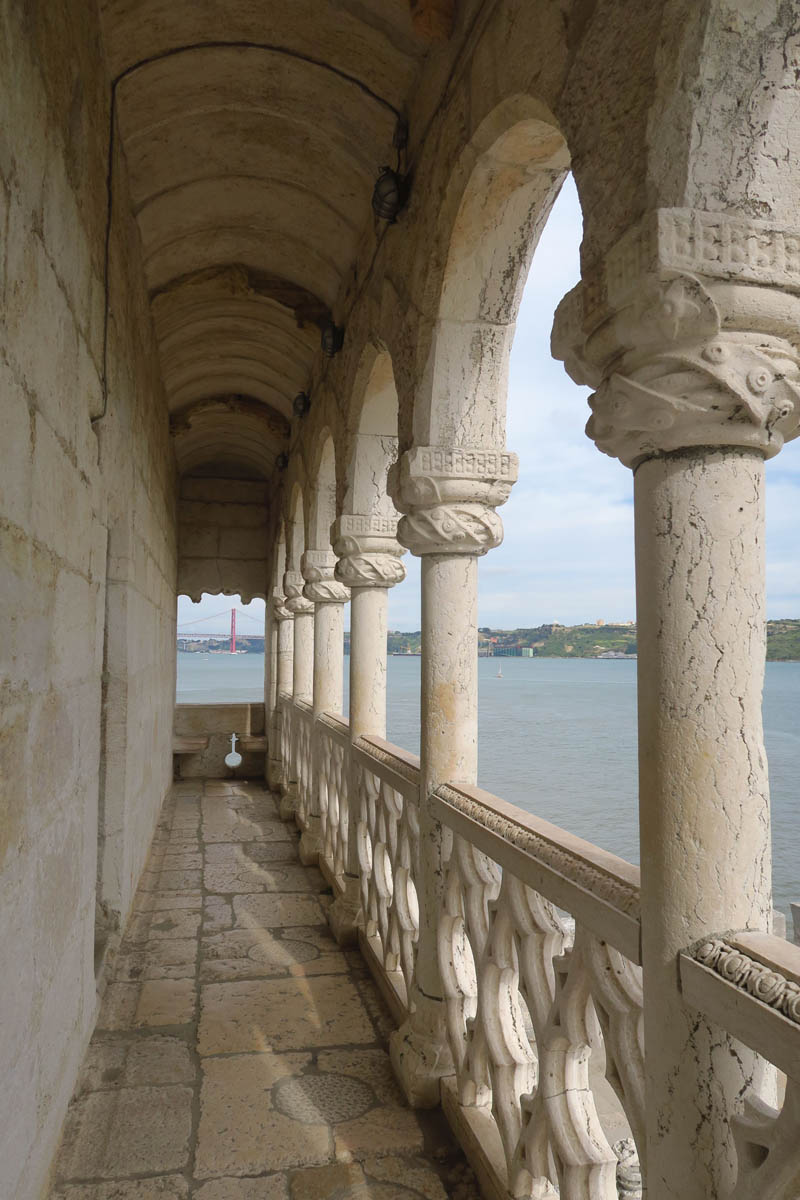 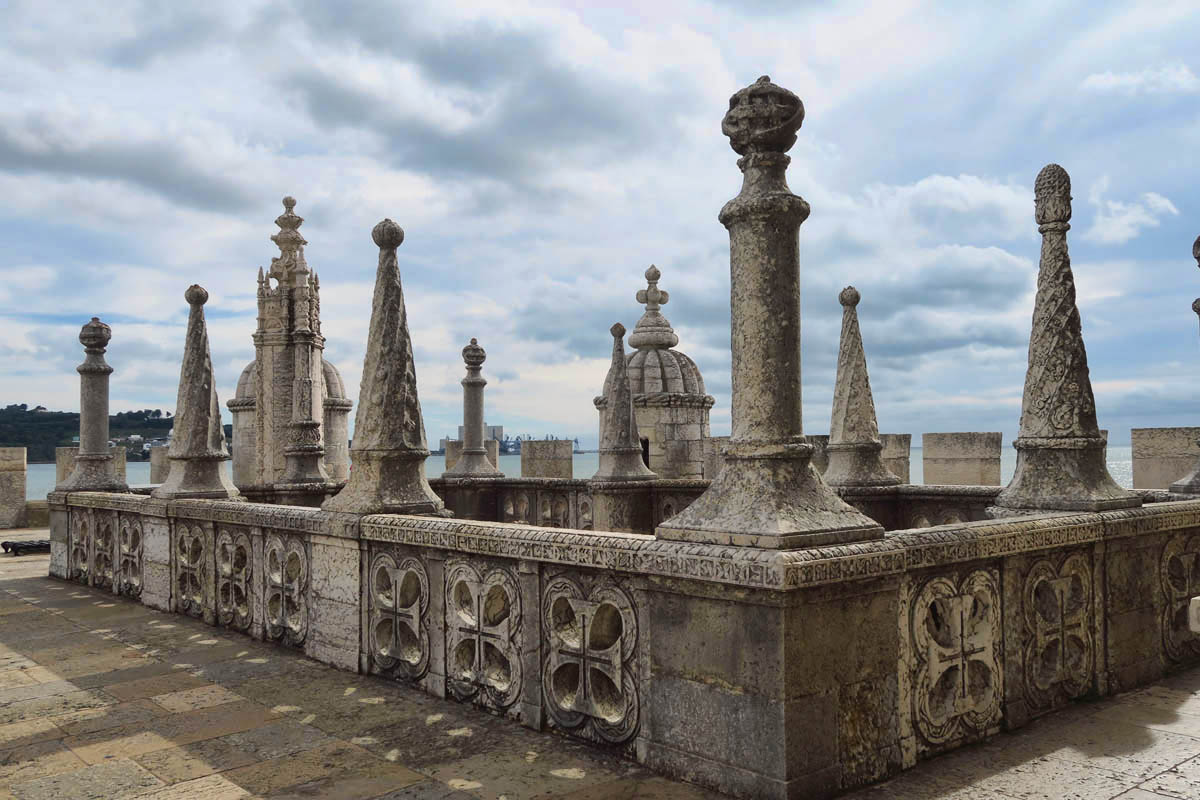 Rounding out a full days itinerary in Belém is the newly redone and relocated National Museum of Coaches. This extensive collection contains over 80 coaches ranging from the oldest in the collection used by King Filipe II (Filipe III of Spain) during his visit to Portugal in 1619, to the first automobile to arrive in Portugal in 1895. In between are all sorts of ceremonial coaches used by the Royal Family to service vehicles like fire trucks and ambulances. It’s quite an interesting display. 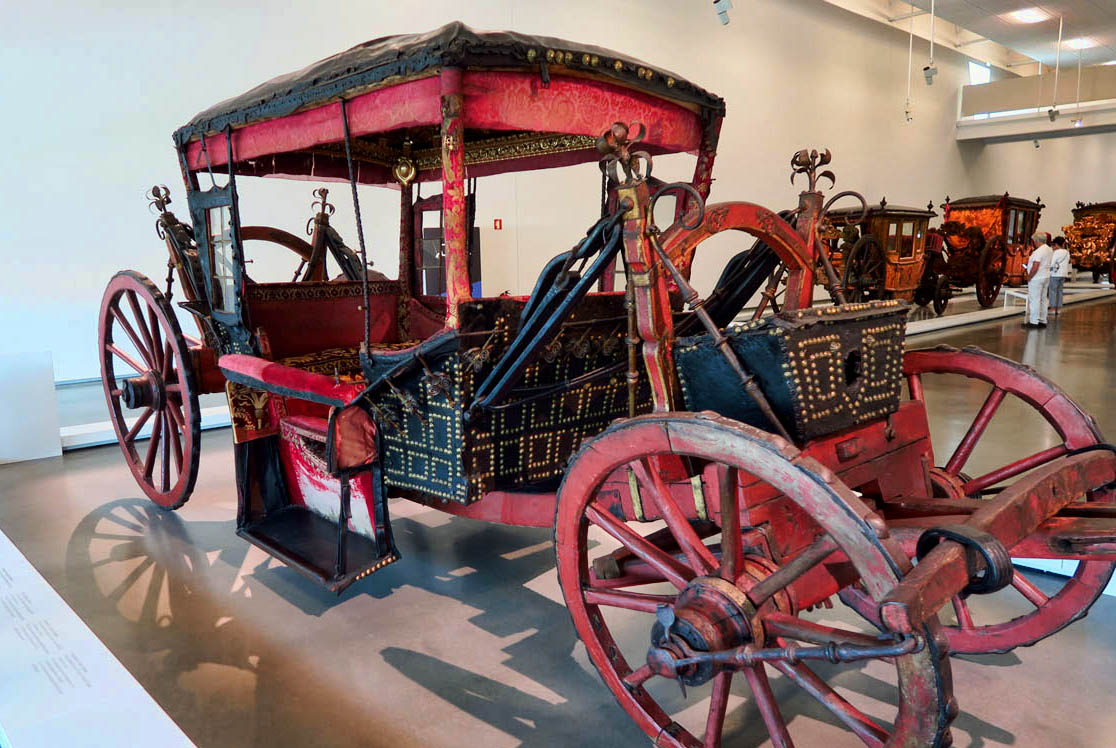 The oldest coach in the display. King Filipe II used this vehicle to travel to from Madrid to Lisbon in 1619 to meet his court assembly. He left on 22 April and didn’t arrive until 29th June. Coach has glass panes suspended by leather straps. 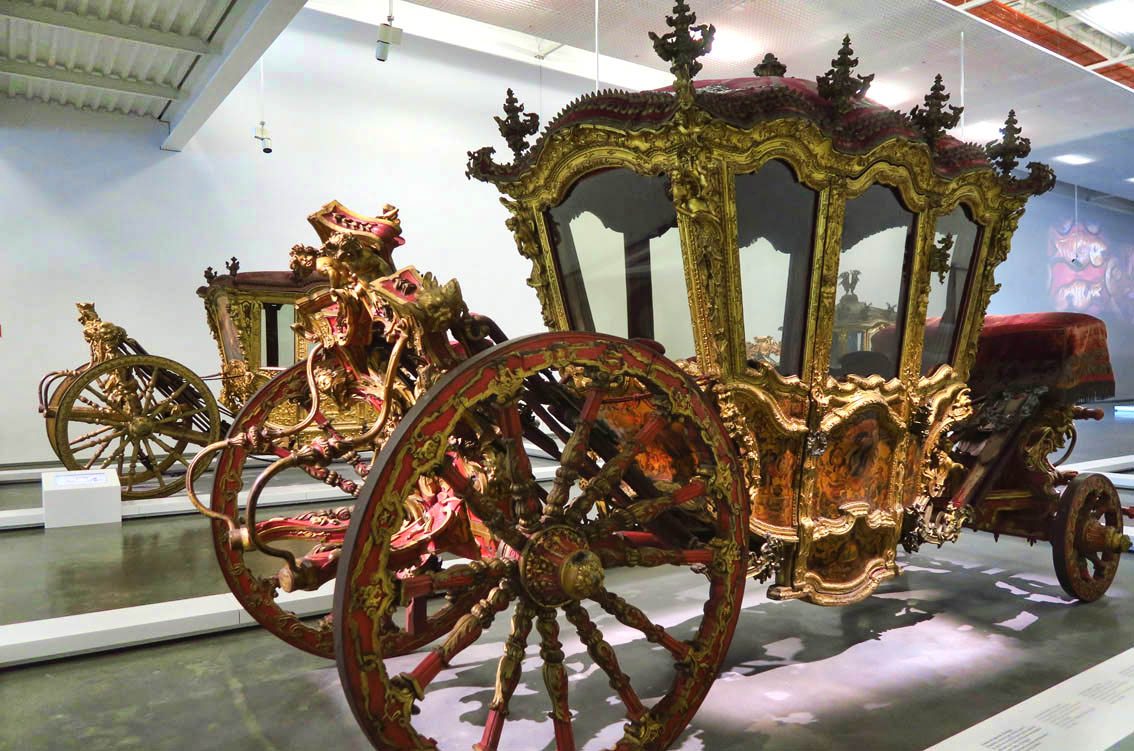 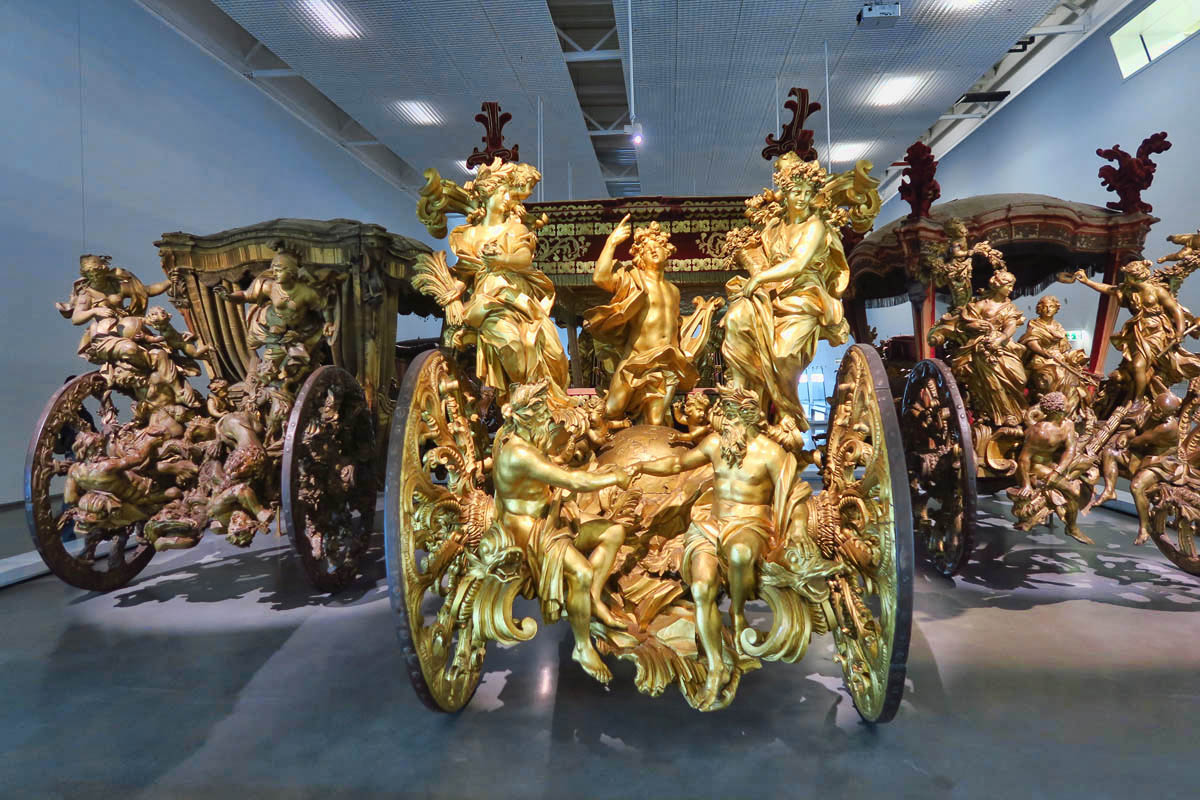 These were the most elaborate in the display, with the rear of the coaches being of carved wood. 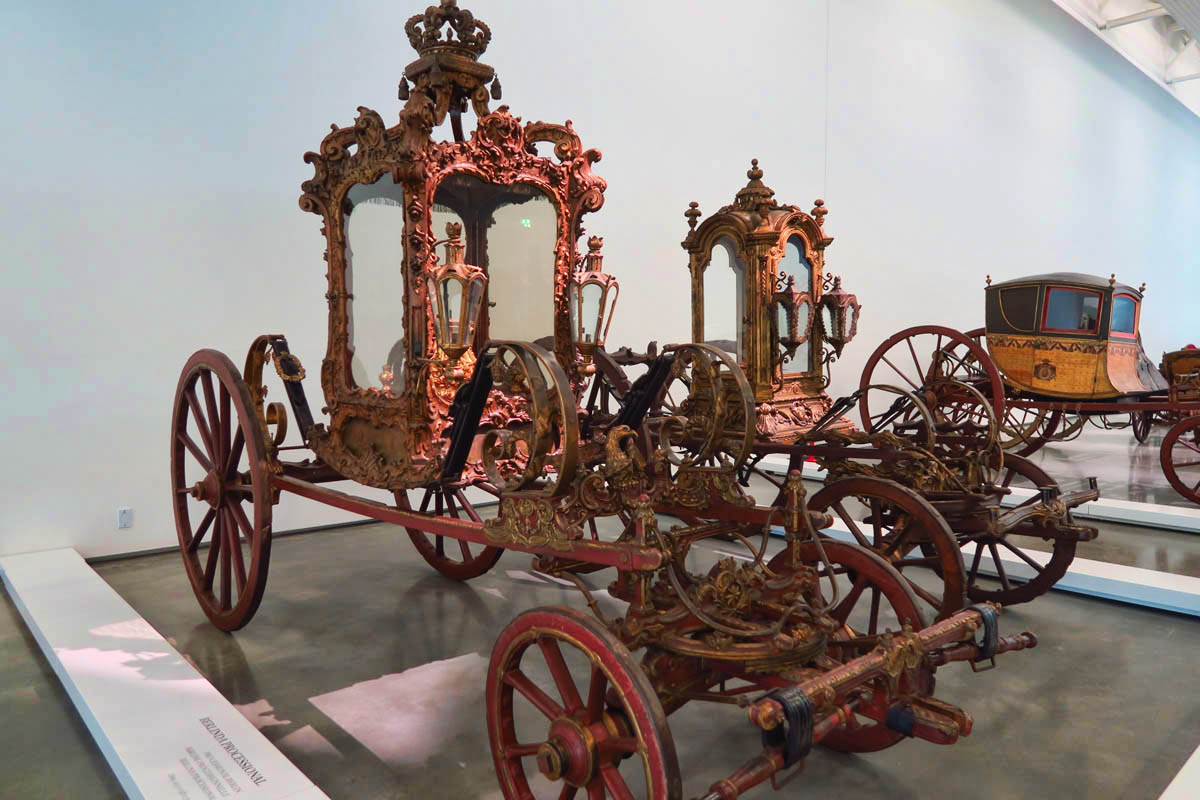 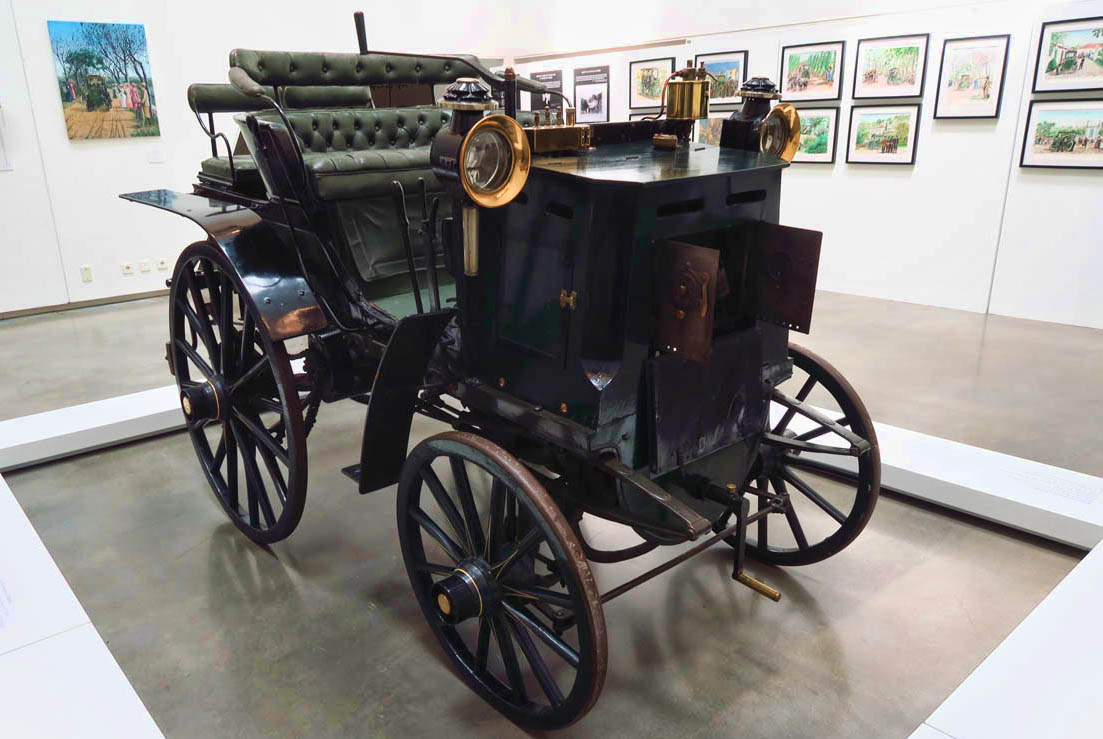 First automobile to arrive in portugal in 1895, made in France, with 3-horsepower engine. 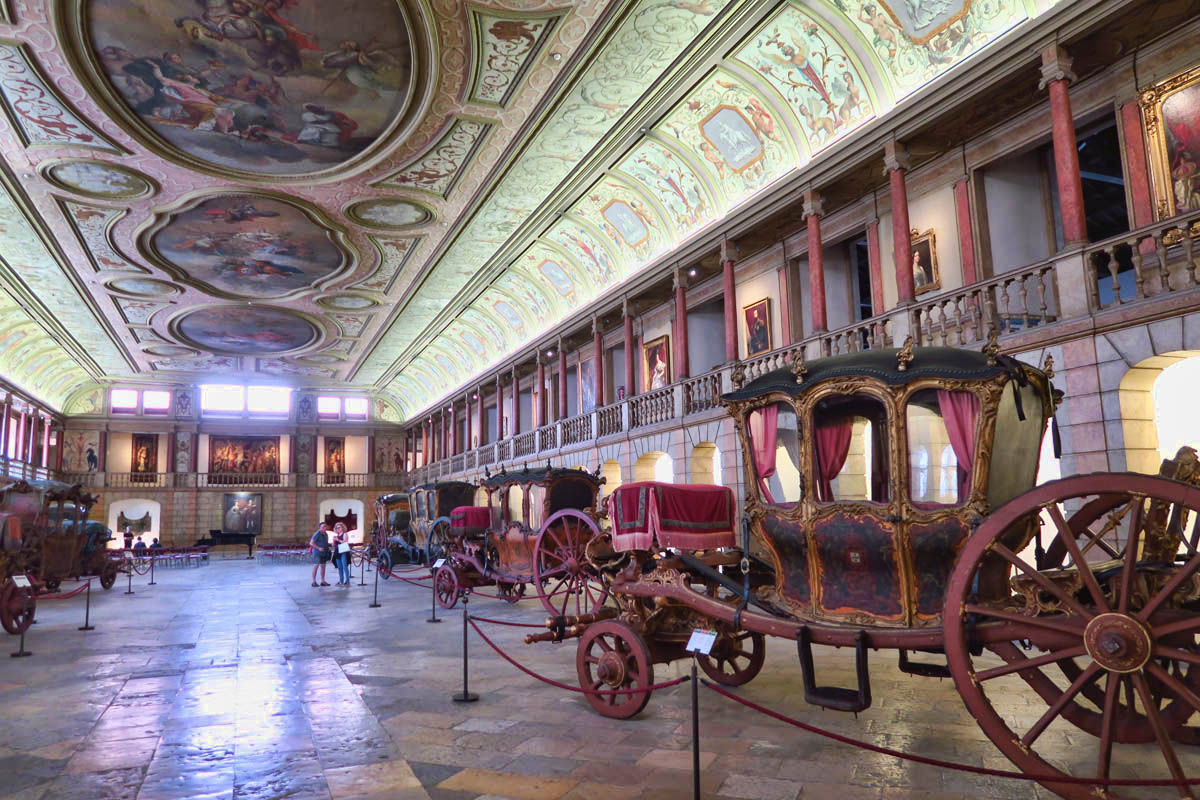 While most of the coaches are in the new modern museum, there are still a few over in the original location across the street, in the Royal Riding Hall. It seems much more fitting setting to me, but they outgrew it. I was fortunate enough to be here when the pianist at the end of the hall was rehearsing.

A day trip to Belém really does feel like a trip back in time!

9 thoughts on “Day Trip to Belém”