Friends and family have asked about Portugal, “Is it crowded?” My answer has always been, “There are people everywhere, but it’s not crowded” Until, that is, I got to Sintra.

I knew I was pushing my luck by going on a weekend, but due to travel schedules, museum closures, and nonrefundable hotels I had now booked onward, there was no other option. It was go on a Sunday or not go at all. Another of Portugal’s many UNESCO World Heritage sites, Sintra is known for its beautiful setting, romantic ambiance, and fantasy-like architecture. There are palaces perched on hilltops, Moorish castles, flower-lined paths through lush gardens. It’s the Number One day trip outside of Lisbon, and often listed as Portugal’s number one tourist attraction. Everybody says, “Be sure to go to Sintra! You’re gonna love it! Don’t miss it!”

It’s only half an hour from Lisbon by train, leaving from the cavernous Rossio Train Station, which adds an additional reason I want to go. It’s literally outside the door of the hostal where I am staying, not more than 50 footsteps. So it’s a kick to walk out the door and step onto the train without ever leaving the building. 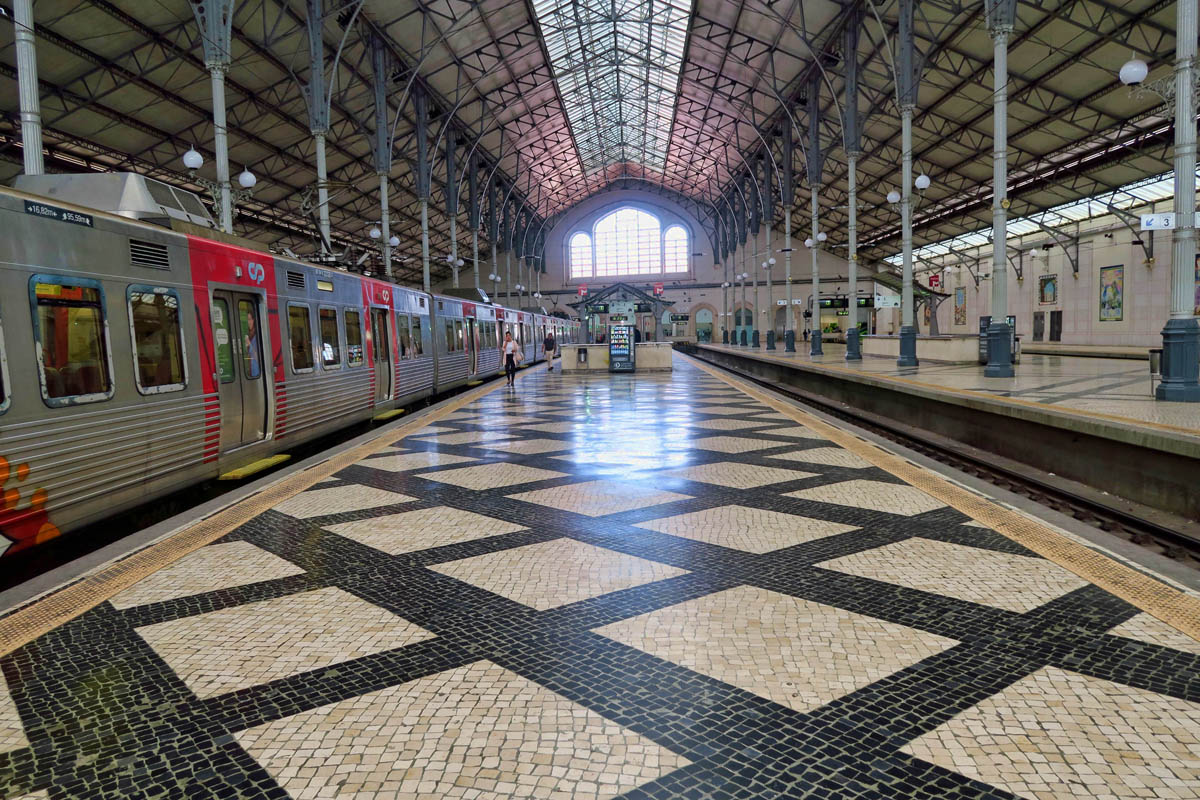 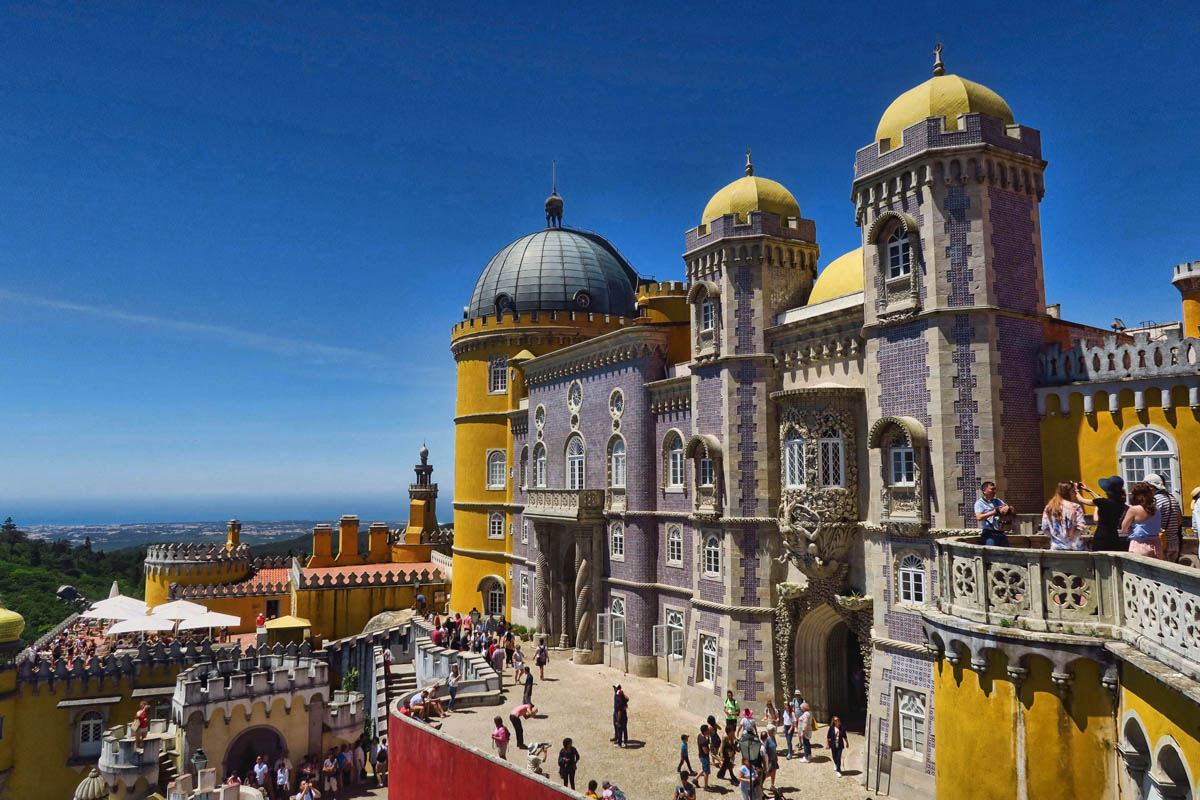 Palácio da Pena, or Pena Palace was once a monastery, but fell to ruin after the 1755 earthquake, It remained in ruins until 1854 when King Ferdinand converted it to a palace as a summer residence for the royal family. 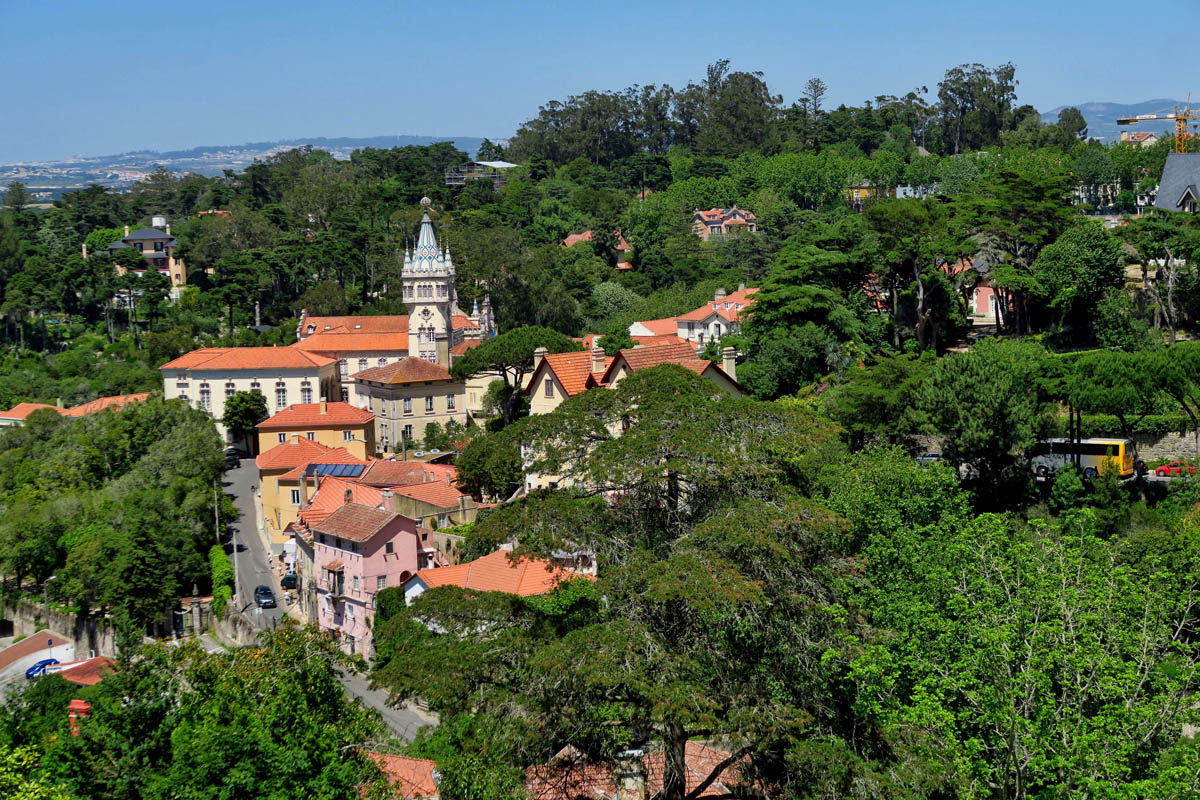 A word of warning, it’s a bit expensive to visit Sintra as one must pay for the train, then pay for a tourist bus to reach the main area of attractions, then pay for another bus if you don’t wish to climb the steep hill up to the castle. Then pay for separate tickets to visit the grounds versus the palace. And the Lisboa Card does NOT HELP here beyond a slight percentage discount on admission (same discount as for senior.) 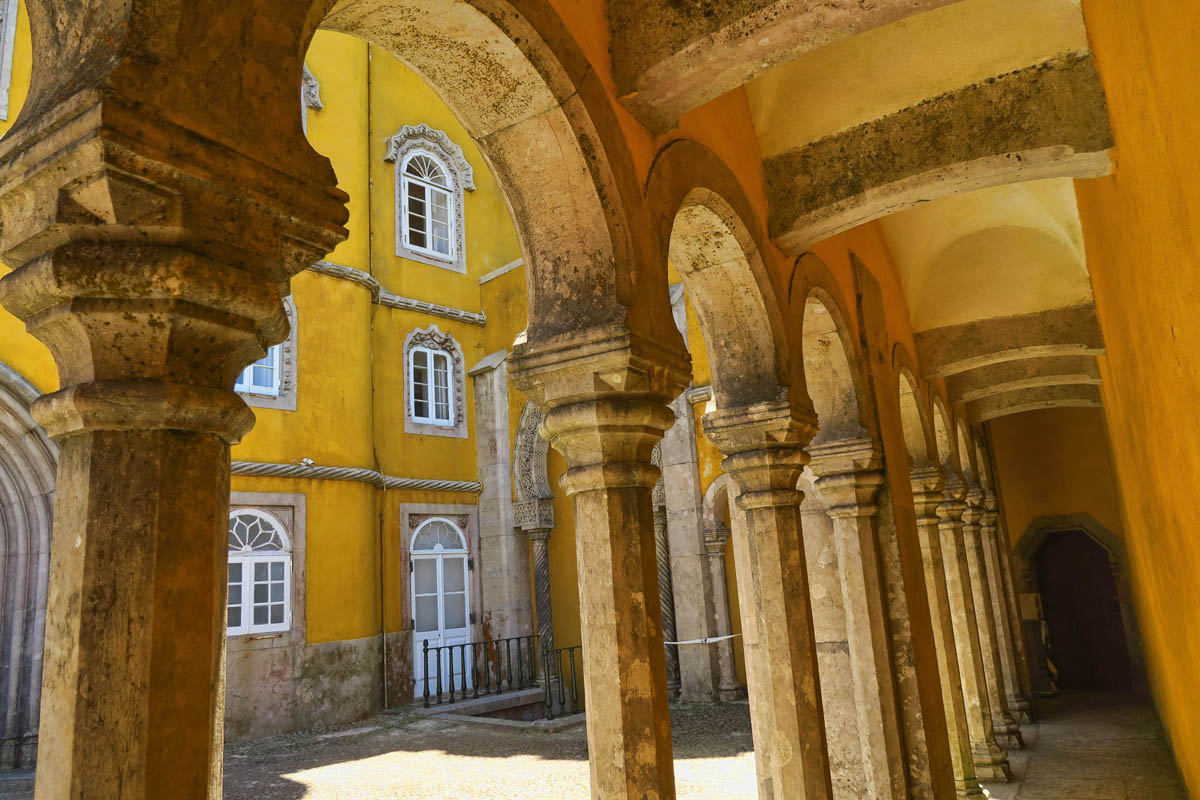 While beautiful to photograph, I must be honest in saying it was probably my least favorite tourist attraction. 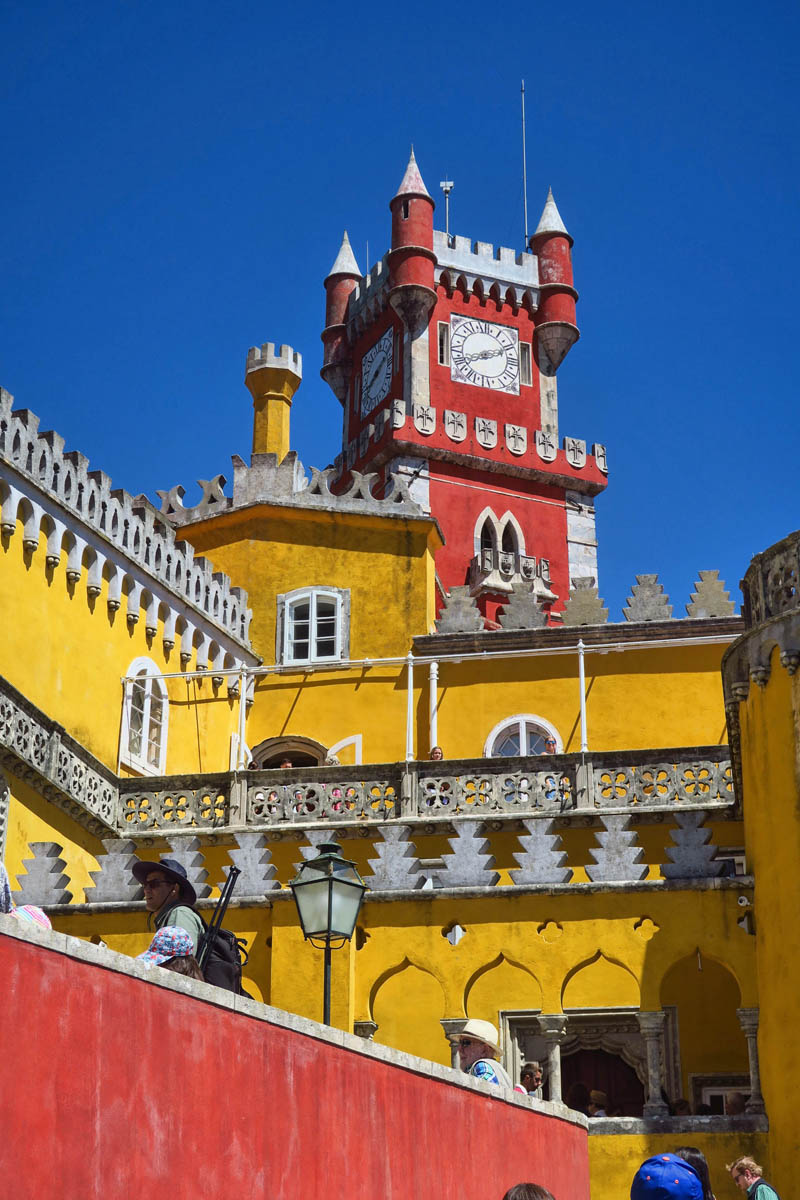 They say the clock tower can be seen all the way from Lisbon on a clear day.

Social Media has dictated so many changes in our lives, changes that seem to be doubling at the speed of light, particularly for those of us who can remember when a phone was just a phone. I have ranted in the past about how things like “listicles” (articles listing “Top ‘X’ places we must see in 2019.”) are funneling tourists, creating hot spots. (And I use the term “hot spot” to mean like a blister on a worn callous, not as the “in” place to be.) But it’s not only changed things geographically. It’s also changing things culturally.

For example, I seem to be one of the few travelers who actually uses a camera these days. I’d say one out of 100 take photos with a traditional camera, while the other 99 wave their smartphones or tablets into the air, trying to see the image over the crowds, pinching and spreading to get the photo into frame. Have you ever noticed how much longer it takes to take a photo on a phone? First, there is the swipe, followed by the selection of sizes. Then there is the tapping to achieve the right lighting and focus on the face, followed by multiple attempts at hitting the right button, particularly if you are taking the photo with someone else’s phone. It’s not as quick as one might think.

But then comes the part that sends me into a rage….the review stage. The arms come down, the head goes down, and the subject rejoins while they stand there hunched over the phone, oblivious to the fact that they are still blocking the “feature” while they do post editing. Pinch and spread the photo into frame, crop, change the filter, pull up the Instagram app, type in a catchy caption, make up a few hashtags, and tag the subjects. All while standing in front, blocking the fountain, castle, palace, statue, whatever.

Whereas with a traditional camera, settings are often preset making it possible to step into the spot, get the subject reasonably within frame, tap the button, and step aside to let others have their turn. 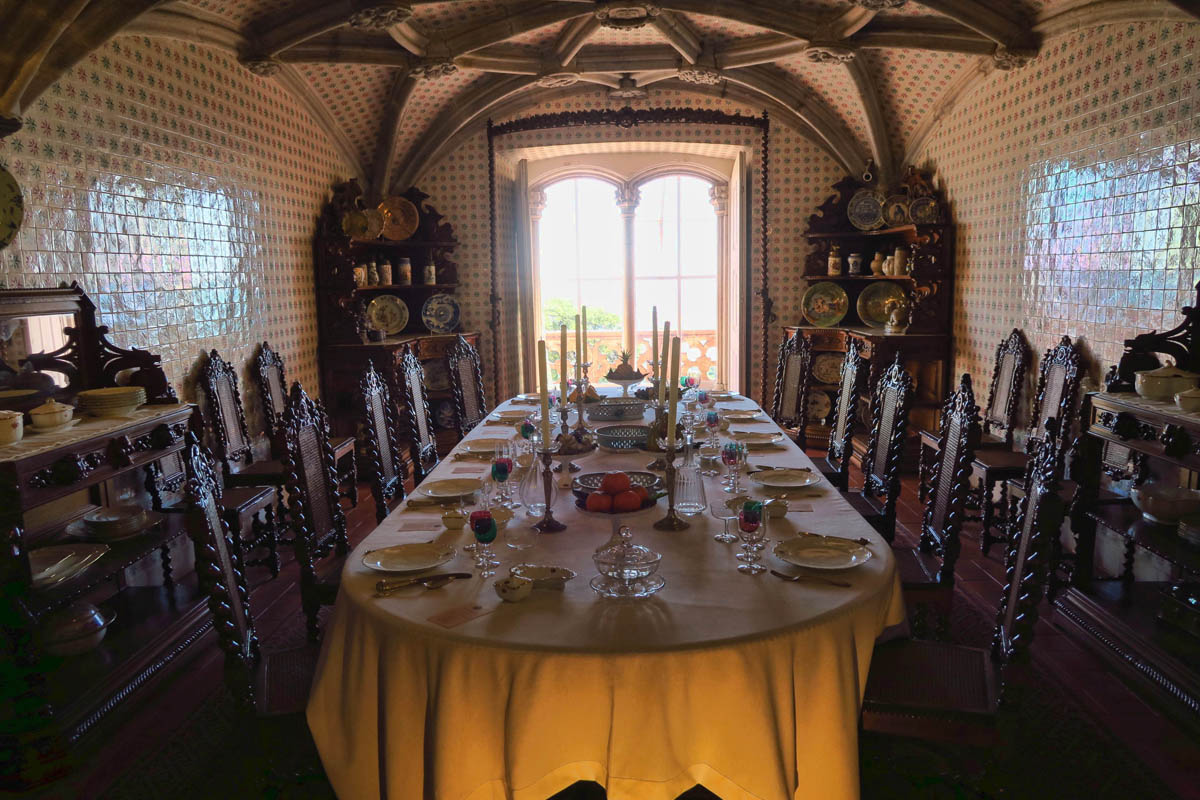 One must purchase an additional ticket in addition to price to enter the grounds to go inside this palace. Well, I have come all this way… 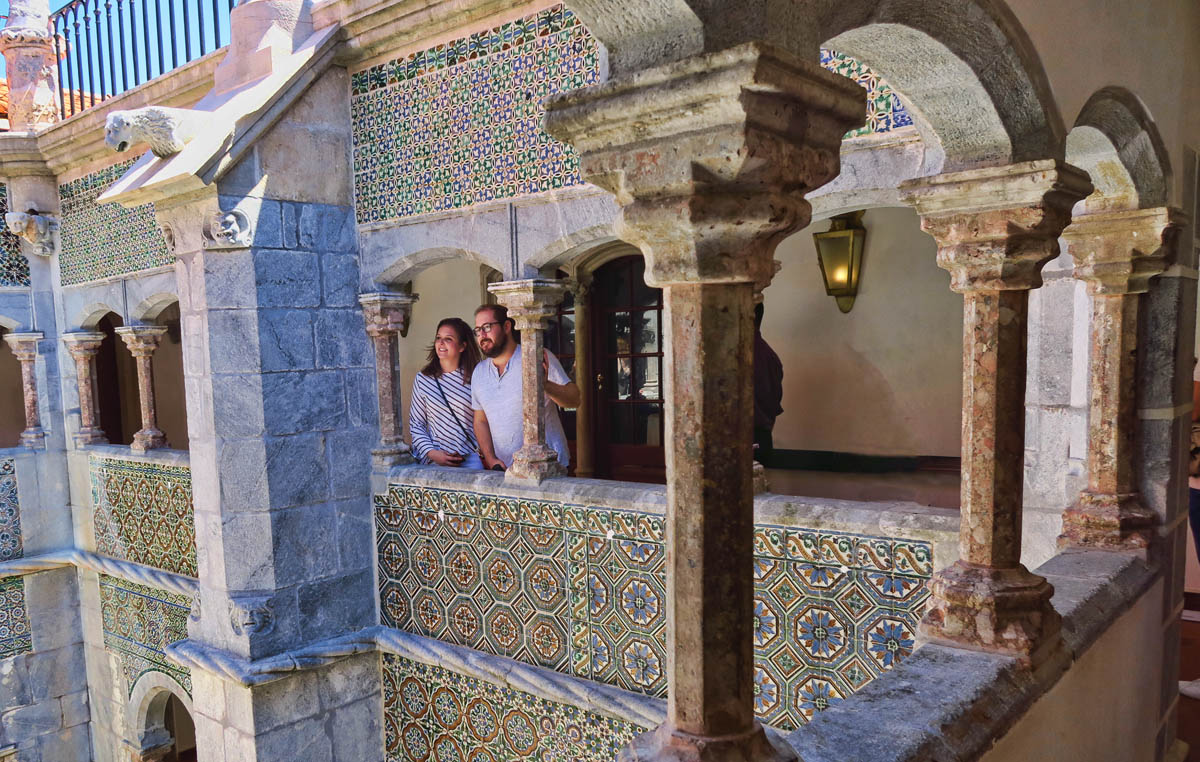 Some areas were not destroyed during the 1755 earthquake. This cloister, another popular photo spot, was one that remained intact. 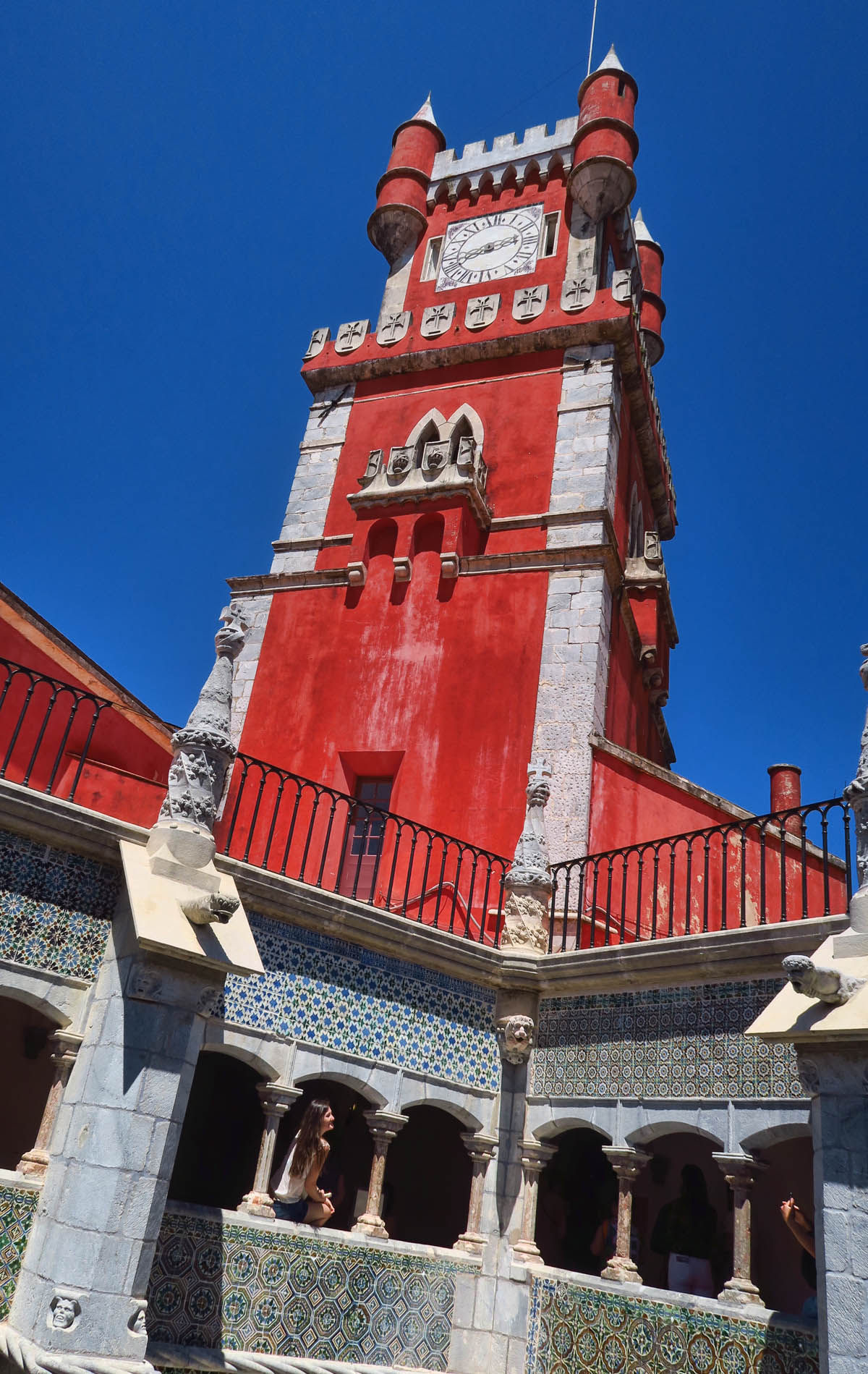 Clock tower was completed in 1843. (Note another photo shoot in progress in cloister below.) 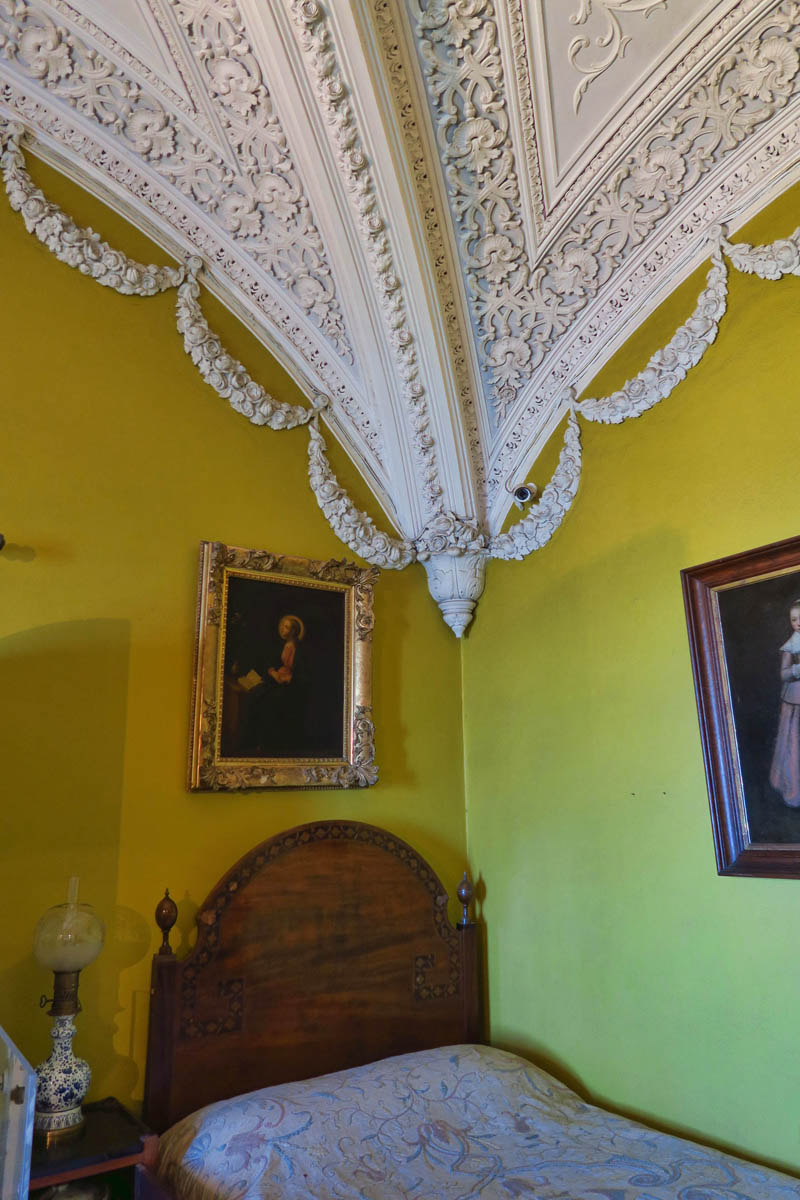 Note all the bedrooms have rib vaulted ceilings, typical of the 16th century Manueline style. 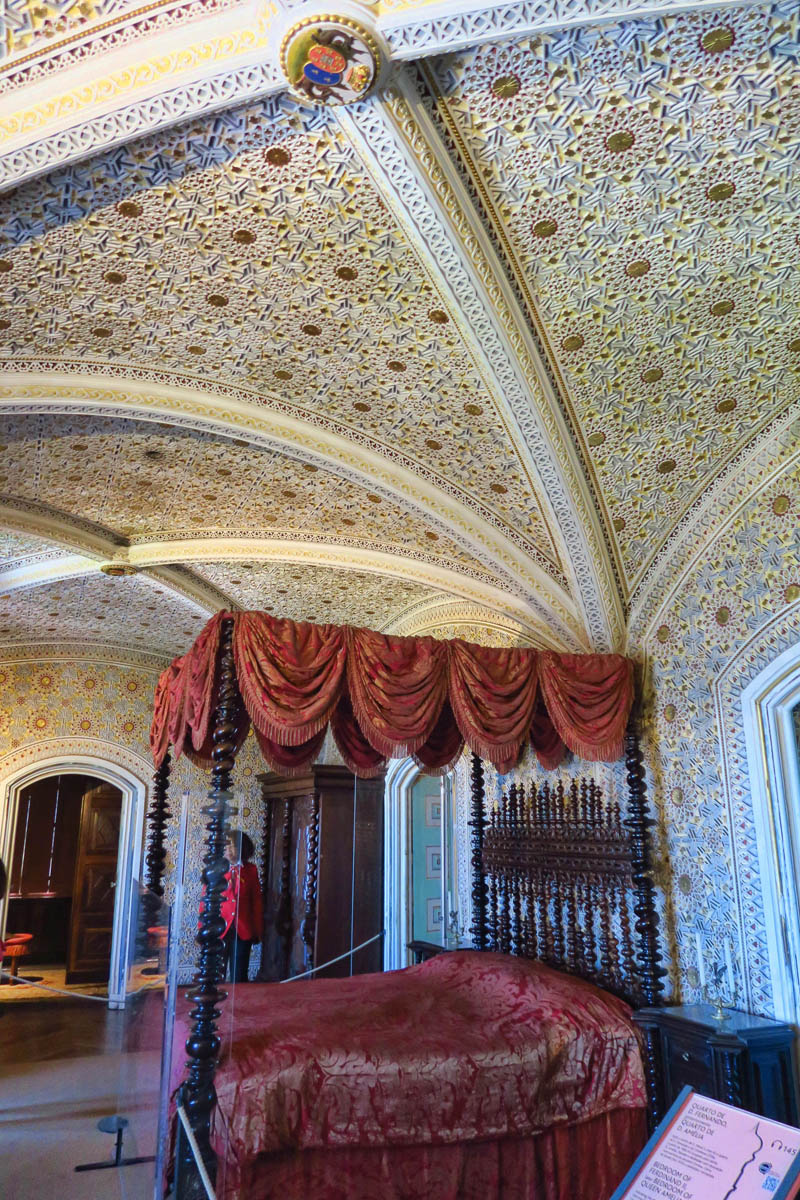 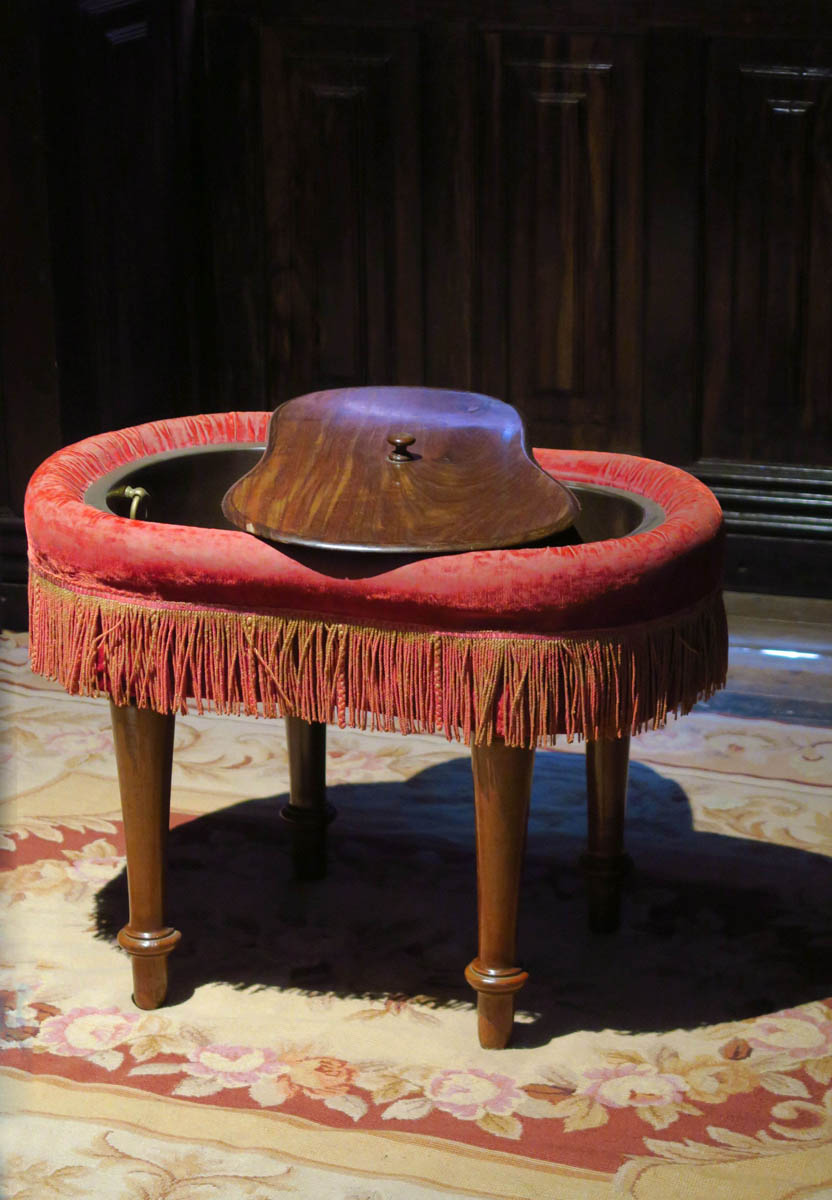 Sites like Instagram and Facebook have not only changed the way we take photos, they’ve changed the subject matter as well. I really hadn’t thought about this much until my frustrations in trying to photograph the palace at Sintra. Since it’s a fairytale-like setting, I began to notice young women engaging in a type of “cosplay” where they were posing like princesses wearing sundresses with long flowing skirts, vintage straw handbags. I even saw one woman posing in a sheer, ankle length tulle skirt. And of course always the ubiquitous wide-brimmed Instagram hat.

These young women typically work in pairs, switching roles while one is the photographer, and the other is the model. There are poses looking whimsically up at the turrets, one hand on the hat while the other hand holds the skirt hem or straw bag. There are those who pose from the back view, their tresses flowing out of the hat brim. Sitting on the majestic staircase looking pensive with ankles crossed, elbows on knees. Sunglasses slid down the nose while looking coquettishly over the shoulder.  And then they reverse roles.  It’s fascinating if you stop long enough to observe.  And you will have plenty of time to observe while standing in the midday sun, waiting your turn for these photo shoots to wrap up so you can grab a photo of the actual palace itself! 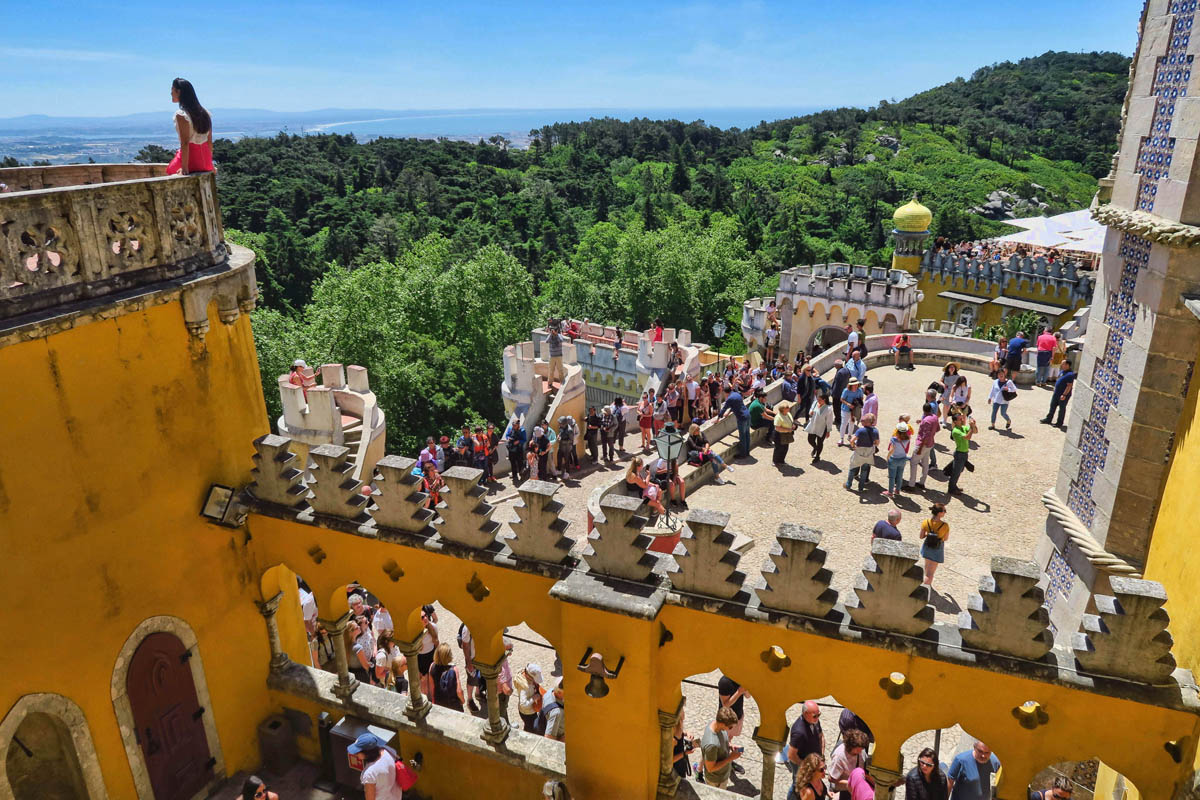 Note the young woman in upper left corner. She seemed to be in the frame everywhere I went. 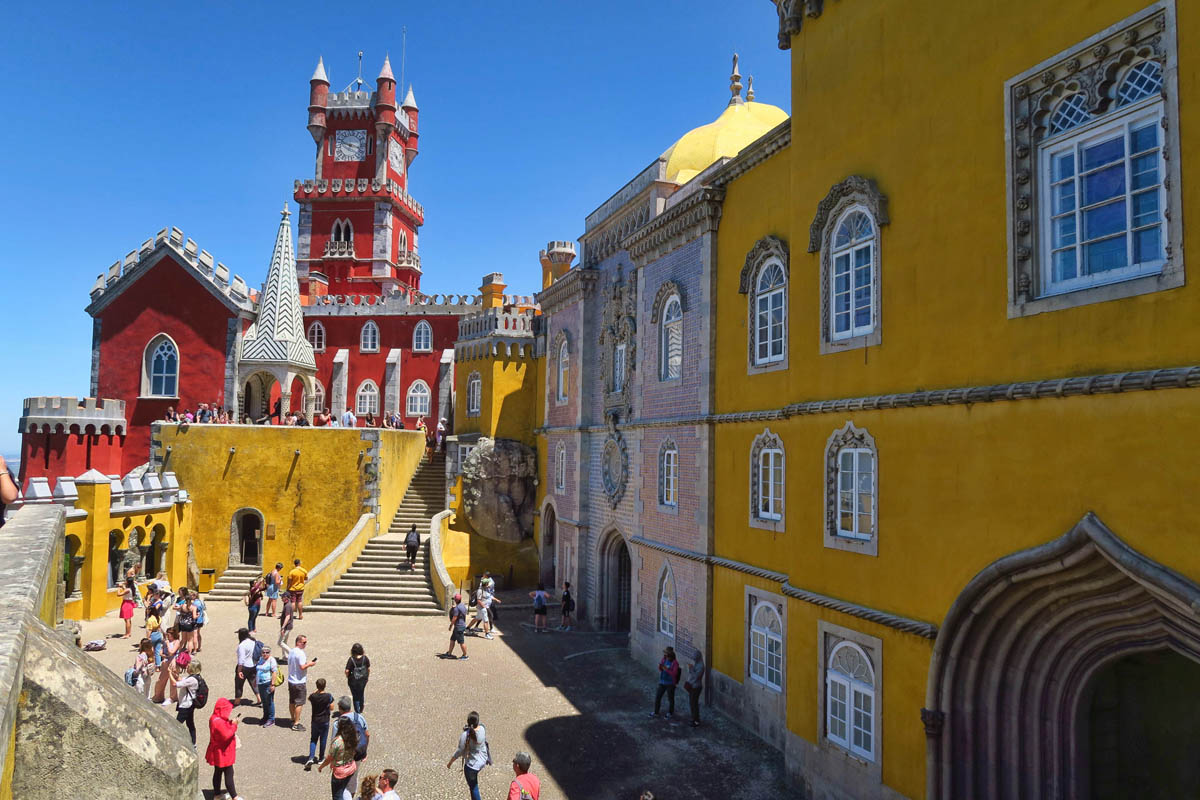 Forget getting a clean shot off on any terrace, as it was constantly lined with photo shoots or selfies in progress. 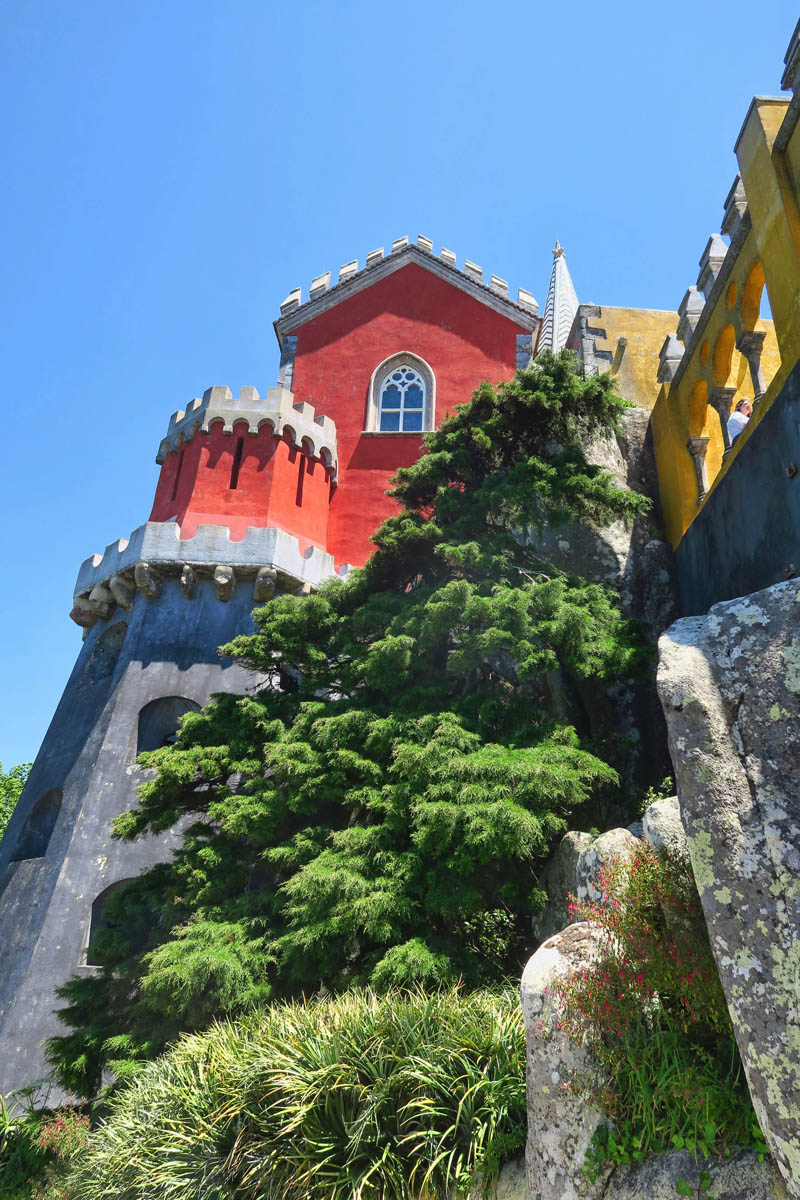 Finally, I saw this spiral staircase that had no signage. No one was in it, so I decided to descend. It spit me out outside the palace walls, so I just followed rather than try to re-enter. 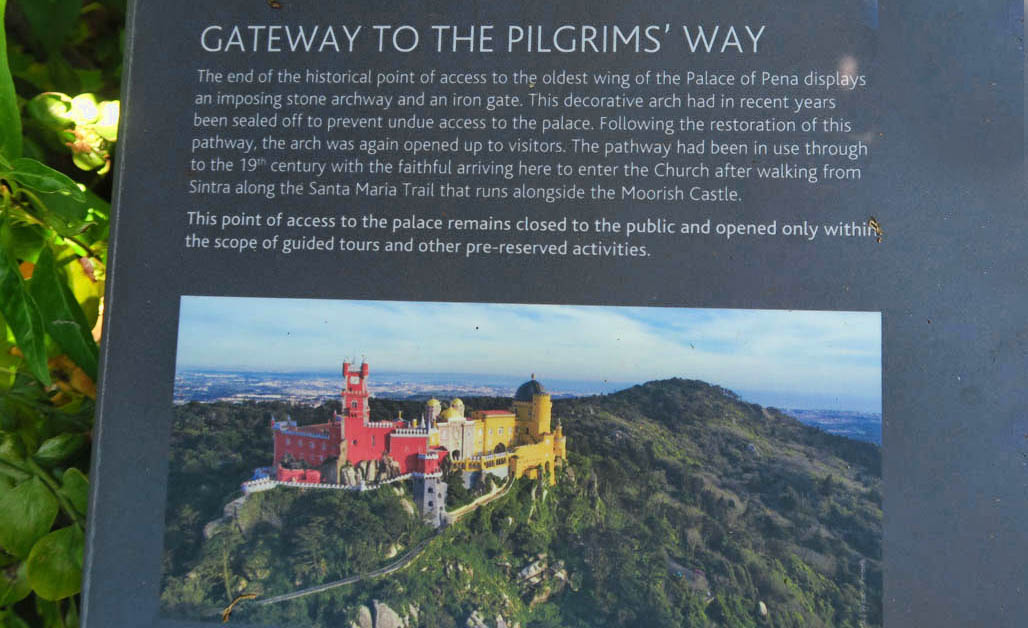 I came upon this sign saying I had arrived at the “Gateway to the Pilgrim’s Way” so I followed.(Note path leading down in lower left corner.) 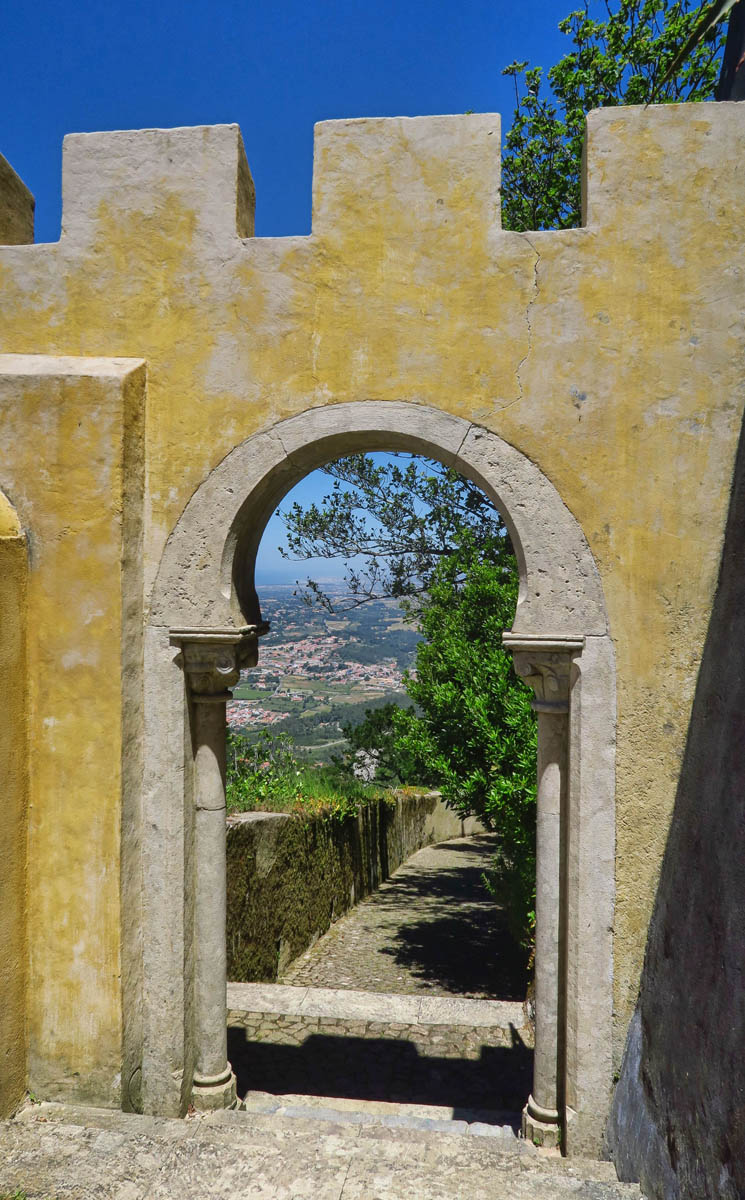 No one was around, so I decided to follow the solitude, feeling relief at having escaped the masses. Seems this would be a way to enter the palace for free, as long as you didn’t mind the massive climb, as the path leads back down to the town. 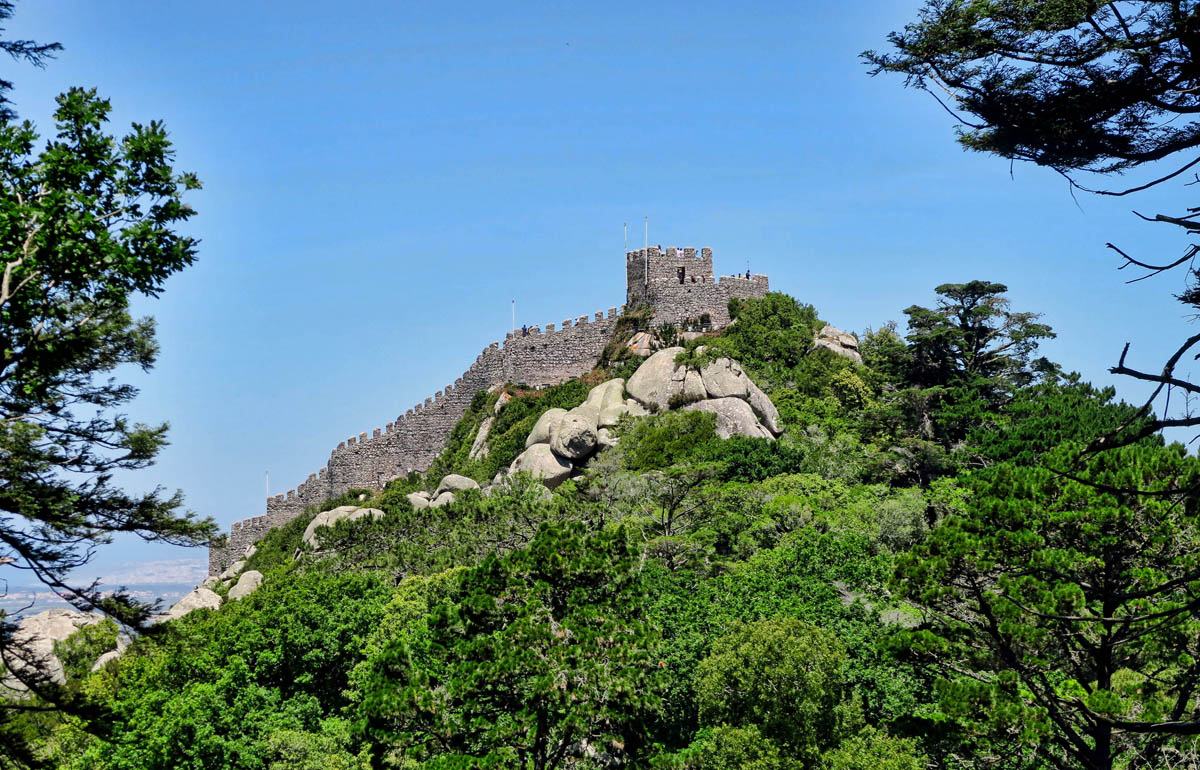 There are plenty of other sites to see in Sintra also, like this 8th century Castle of the Moors, restored after the 1755 earthquake. 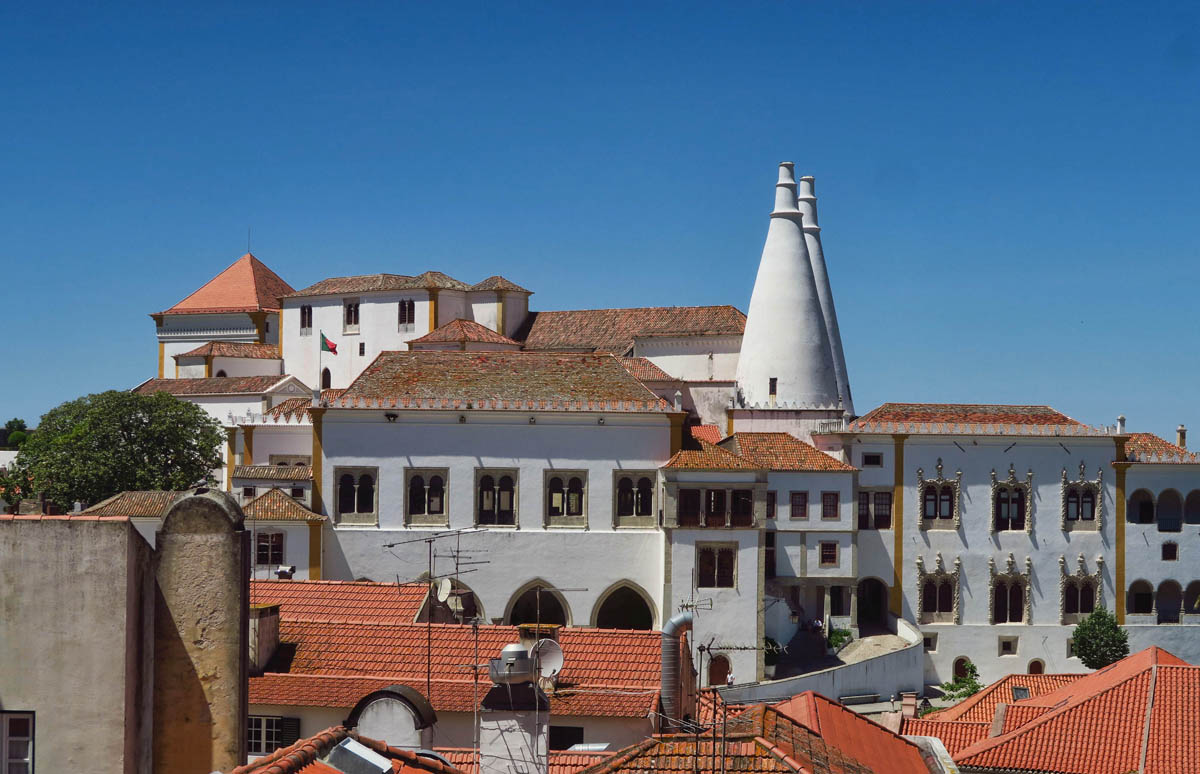 Or the Sintra Palace, also known as the “Town Palace” with it’s iconic conical chimneys over the kitchen. 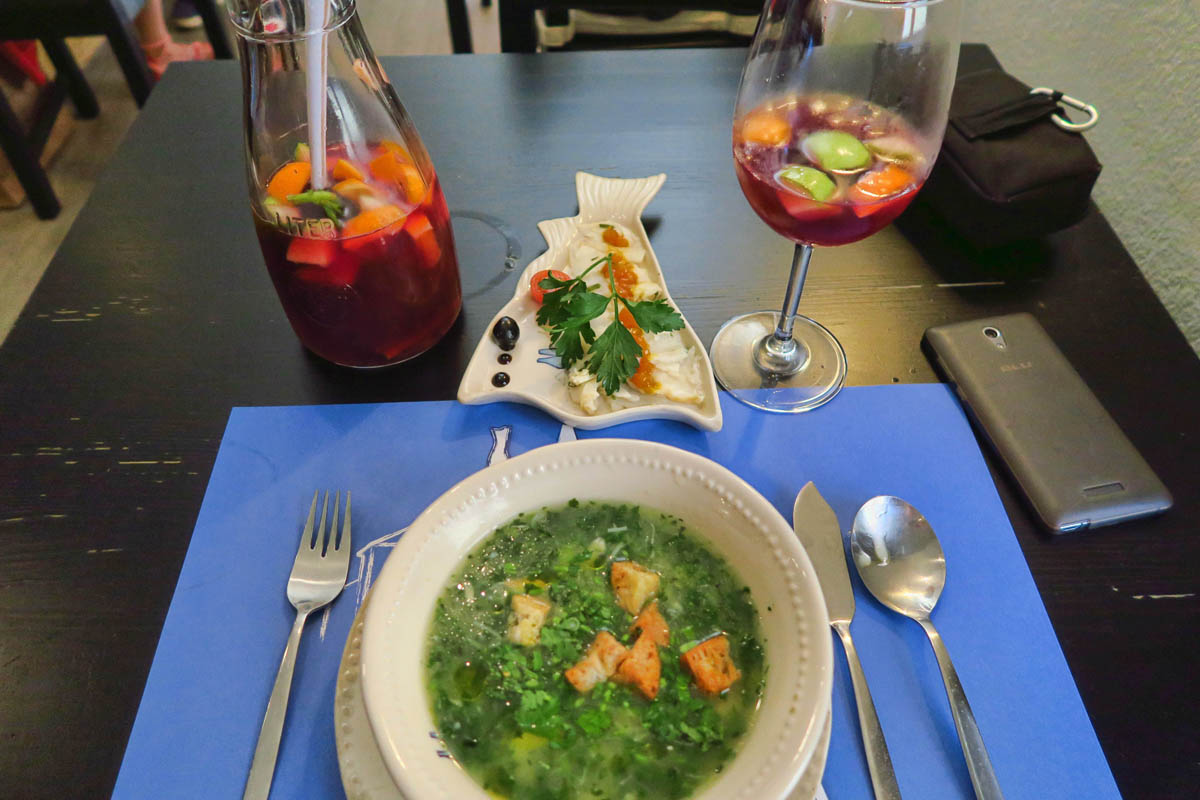 But honestly, after the crowds, I never made it past the jug of ice cold sangria at Bacalhau na Vila.

I do not begrudge anyone for getting their photos. Or for visiting the places to which social media has alerted us all, and made us feel like we’ve got to get there now, or miss out on living our best lives. But for goodness sakes, when you are at Sintra on a Sunday, snap the shots..then please…step aside!

18 thoughts on “Sintra on a Sunday”