When deciding on an itinerary for Portugal after leaving Lisbon, I wasn’t sure whether to head north first toward Porto or south to the Algarve region along the southern coast. All research said the beaches became a mob scene during July and August, the time period when Europeans typically take their vacations. Sun-worshipers arrive in droves during the doldrums when the spring winds die down, and the scorching sun makes swimming in the numbing Atlantic Ocean bearable. But not only do the temperatures soar, so do the prices. I’ve got a good six weeks before the high season rolls around, so I figure I’ll head south first and get a jump on the crowds, then work my way back up north after I’ve had my beach fix.

I decide to make Lagos my first destination in the Algarve, as I have read it’s a good base to explore the region. Words in the Portuguese language that end in the letter “s” are pronounced “sh,” so Lagos is actually pronounced “Lagosh.” 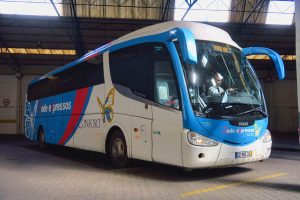 Bus travel is easy and efficient throughout Portugal. Buses are modern with onboard toilets, big windows and and comfy seats. 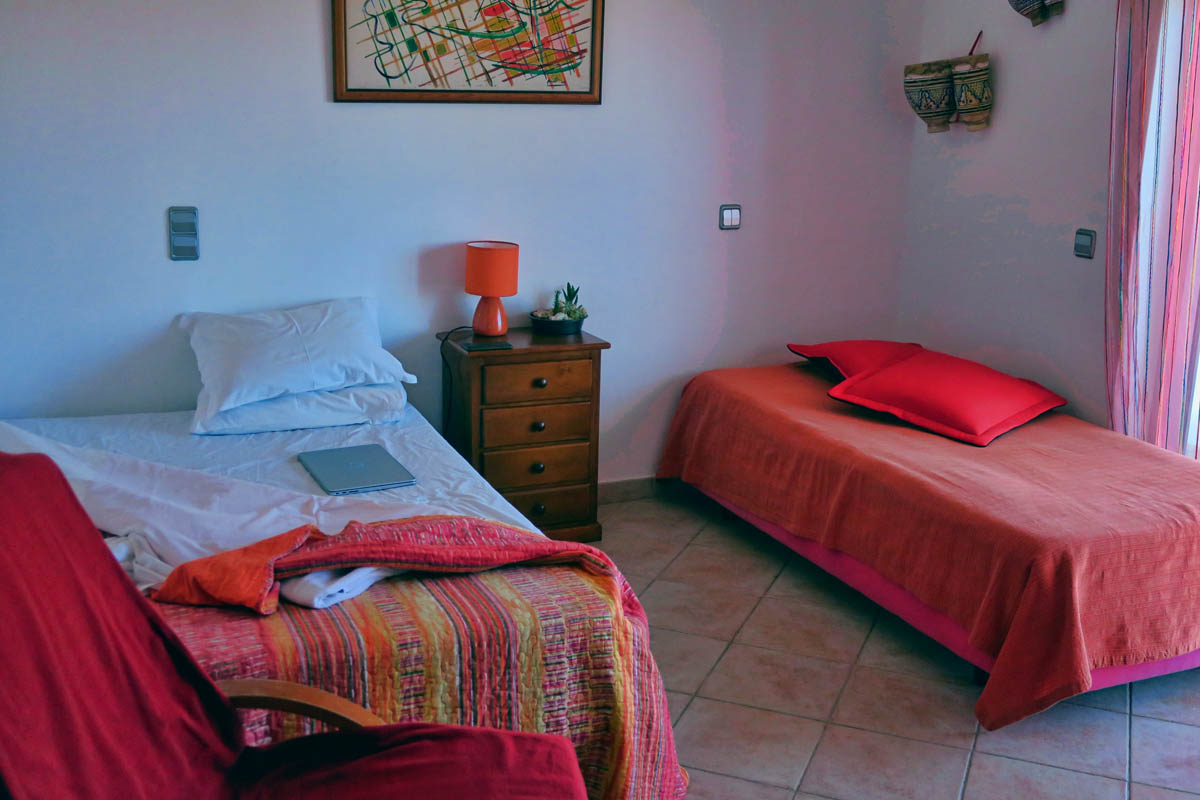 I originally book my guesthouse room for three nights, but end up staying for ten. One of my favorite places to stay, and for only €21 per night! 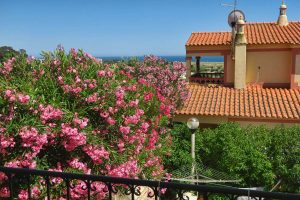 This is the view from my terrace. If you look in the distance, you will see a view of the ocean. I could hear it at night. No mosquitoes, so I slept with the door open, the breeze fluttering through the curtains. 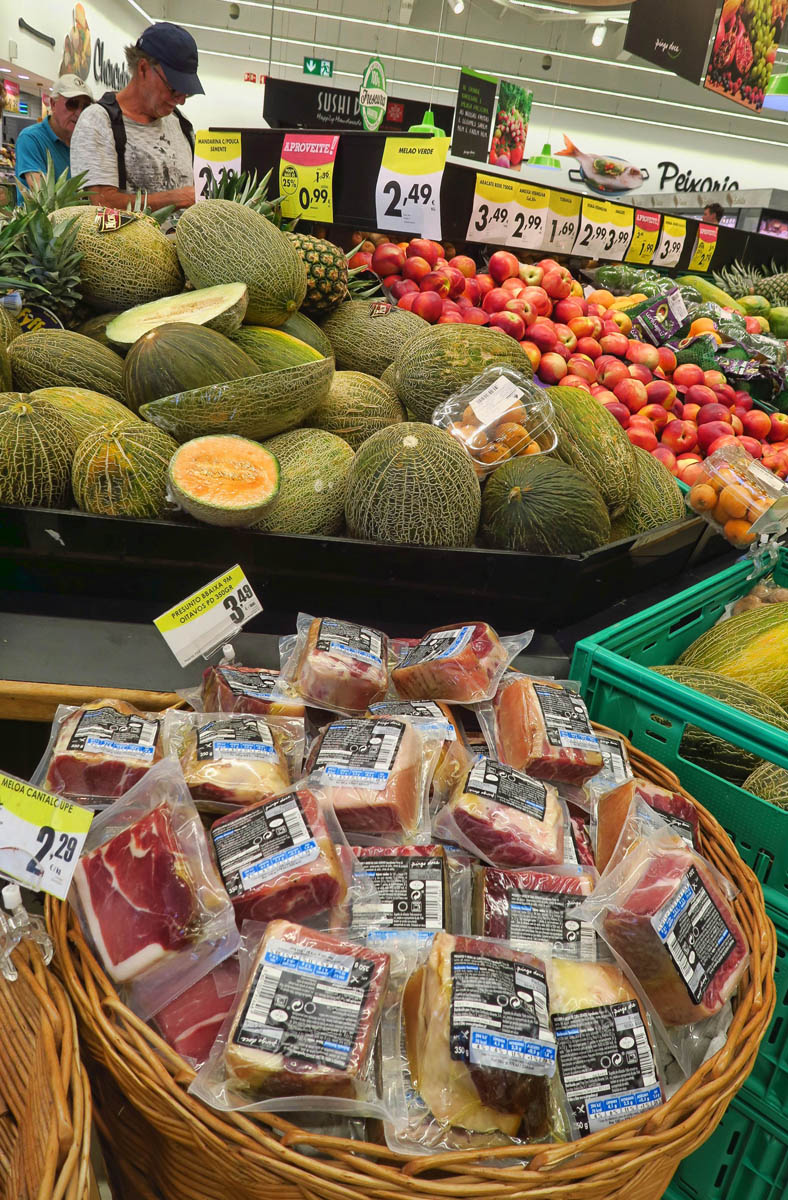 Within walking distance is “Pingo Doce,” which is my favorite grocery store chain in Portugal. Featured is serrano ham paired with melon, a popular dish in all of Portugal.

While there is train service to most towns in Portugal, the bus is actually cheaper, runs with greater frequency, and goes to more of the smaller towns. The train requires one change, and while it’s literally just across the platform, the bus is easier. It’s a pleasant four hours from Lisbon’s Sete Rios station to Lagos, and while I had hoped for a more coastal route, the bus route is freeway most of the way. My guesthouse is within walking distance of the Lagos bus station.

Lagos is a town steeped in history, as it played a big role in Portugal’s Age of Discovery during the 15th century when Portuguese explorers led by Henry the Navigator, set sail from the region to explore trade routes around Africa, eventually all the way to India. But it wasn’t just spices and gold that the explorers bought back to Lagos. They are also credited with the dirty little secret of starting the European slave trade. Lagos is the site of the Mercado de Escravos, Europe’s first slave market, opened in 1444. 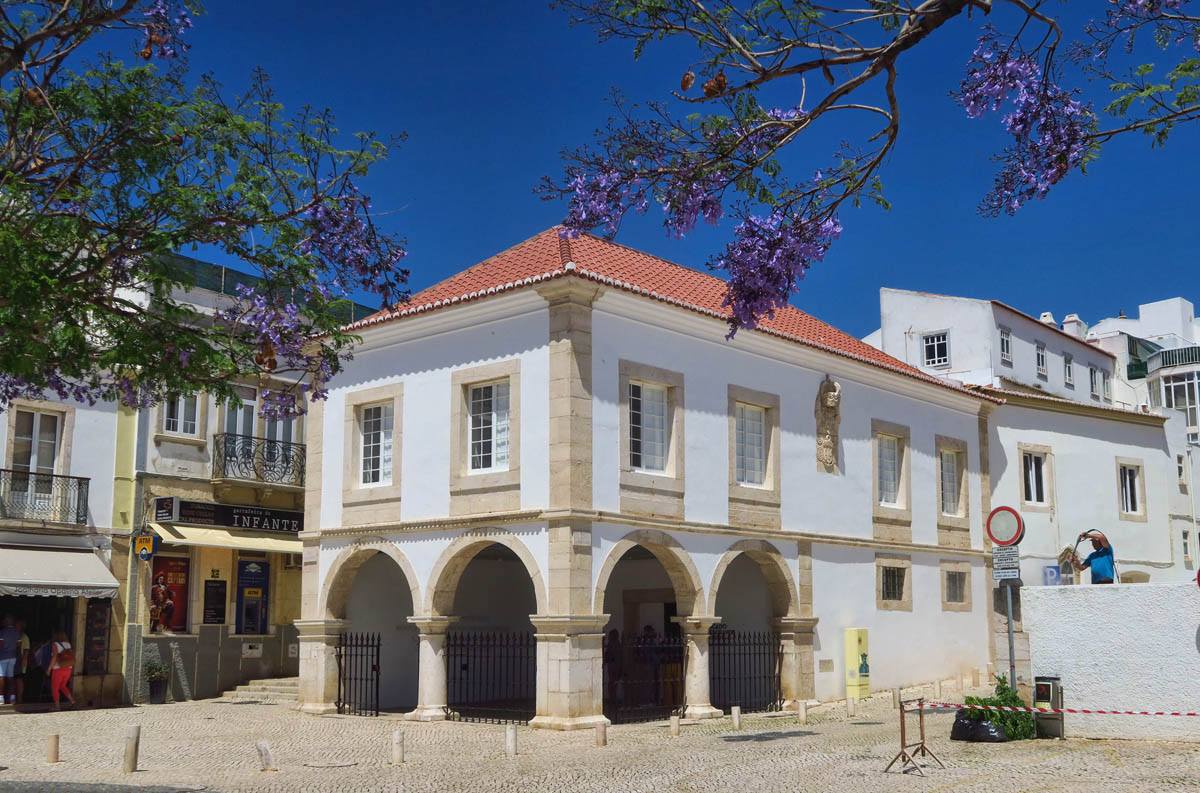 Former customs house built in early 18th century on what was the location of slave market now turned museum. Records are on display showing auction of 235 slaves in 1444. 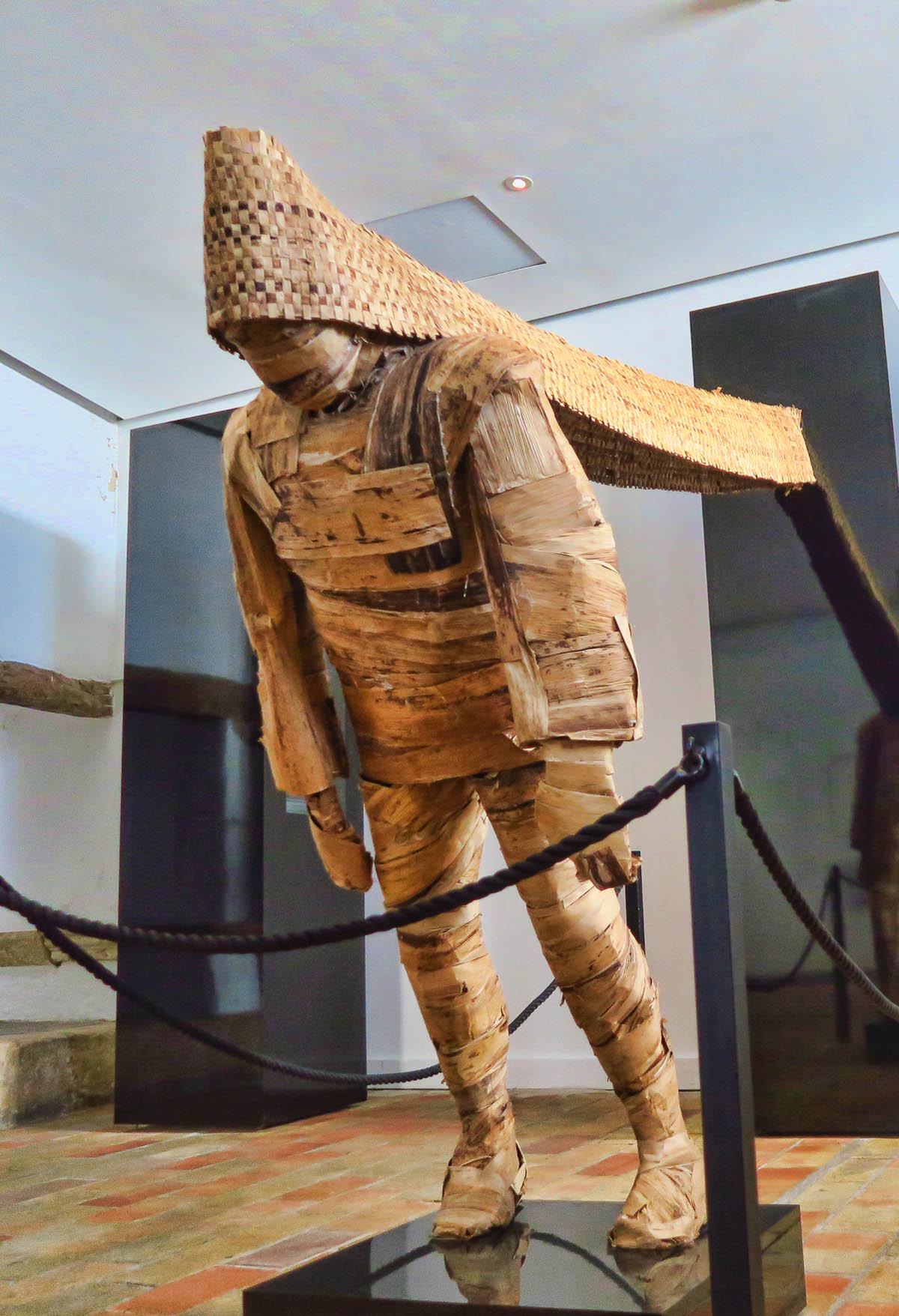 Exhibit in the slave museum commemorates the Revolt of Amador, named for Amador Vieira, historic leader of the São Tomé slave uprising against the Portuguese in July, 1595. 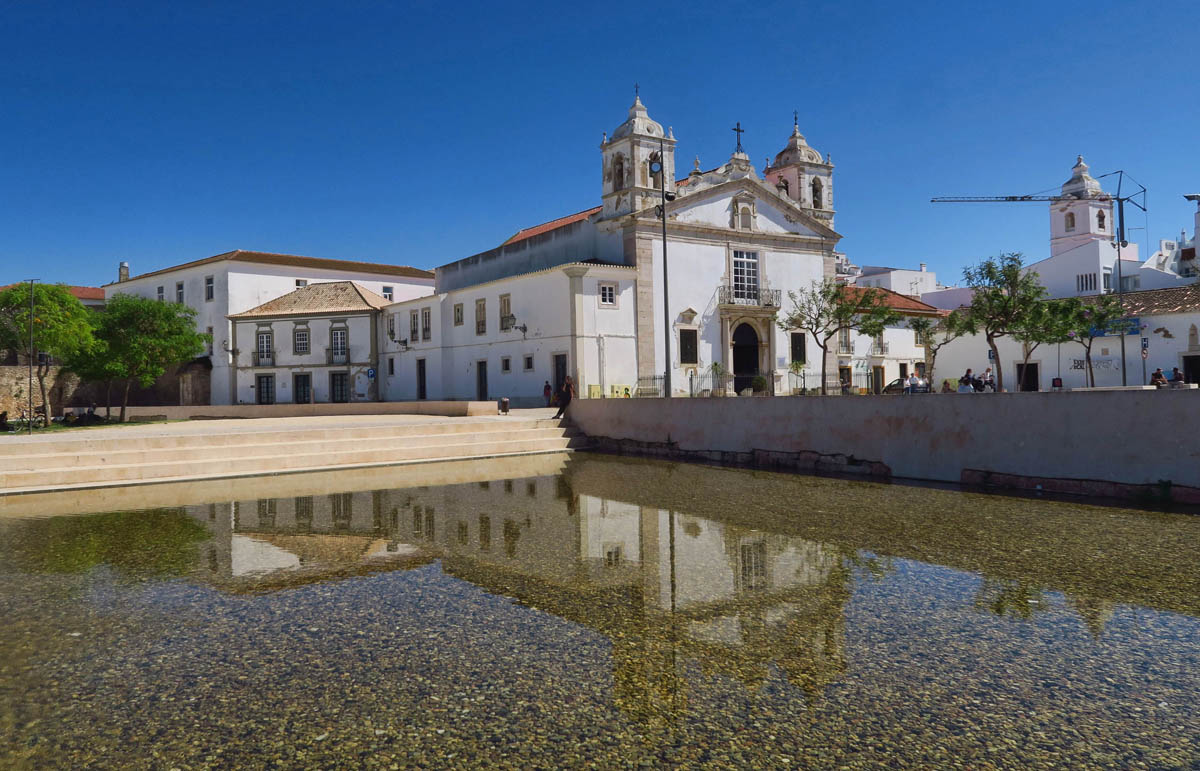 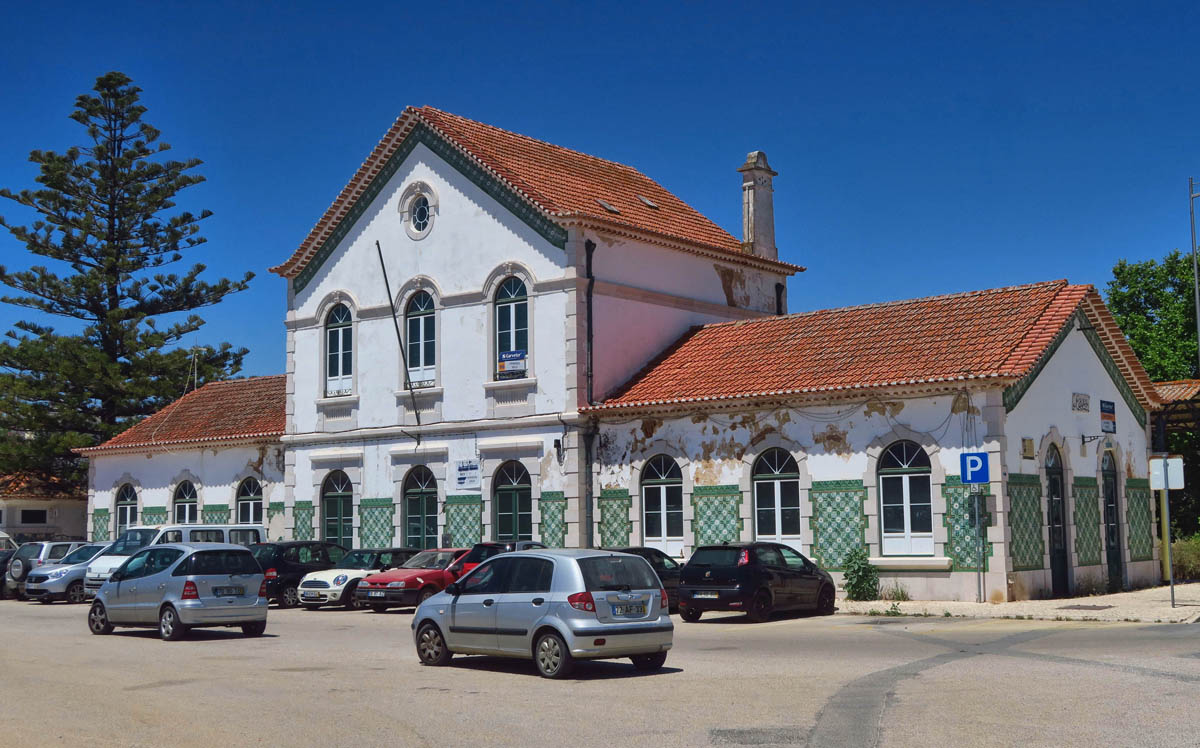 The old train station in Lagos, sadly replaced by a modern building. 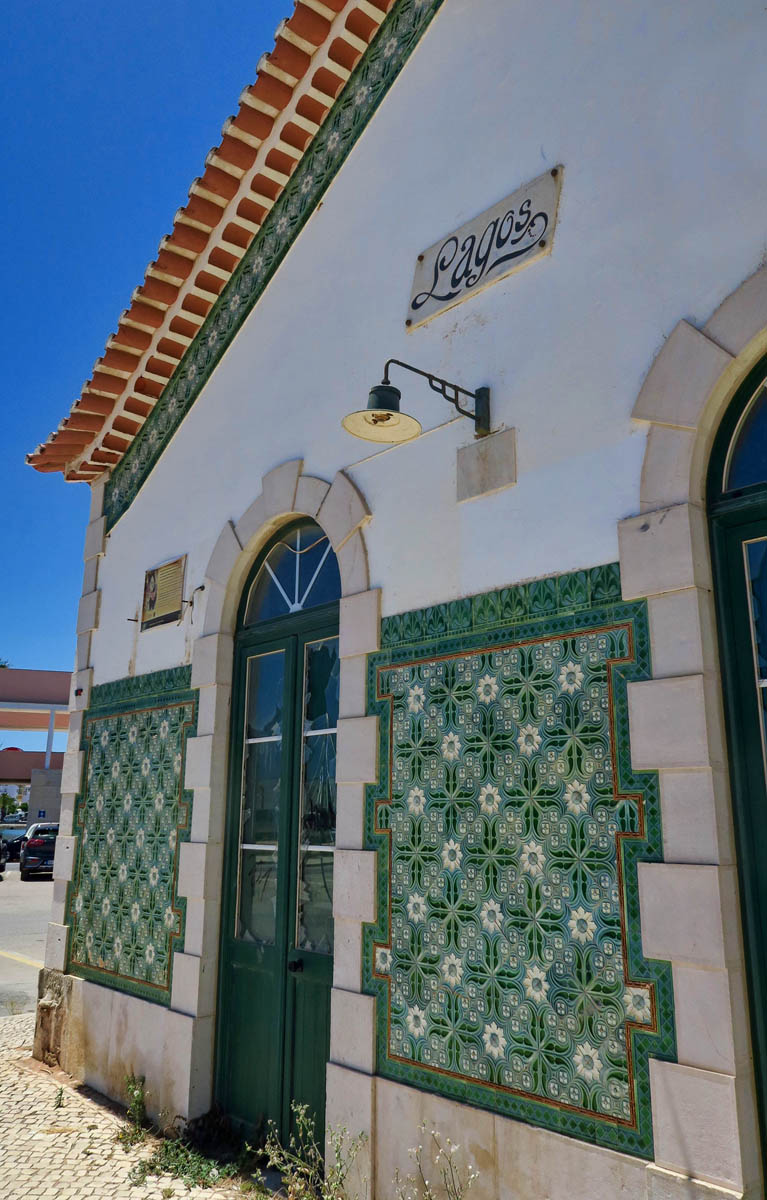 Hopefully they do something to preserve the old station. The 3D tiles that cover it are just beautiful. 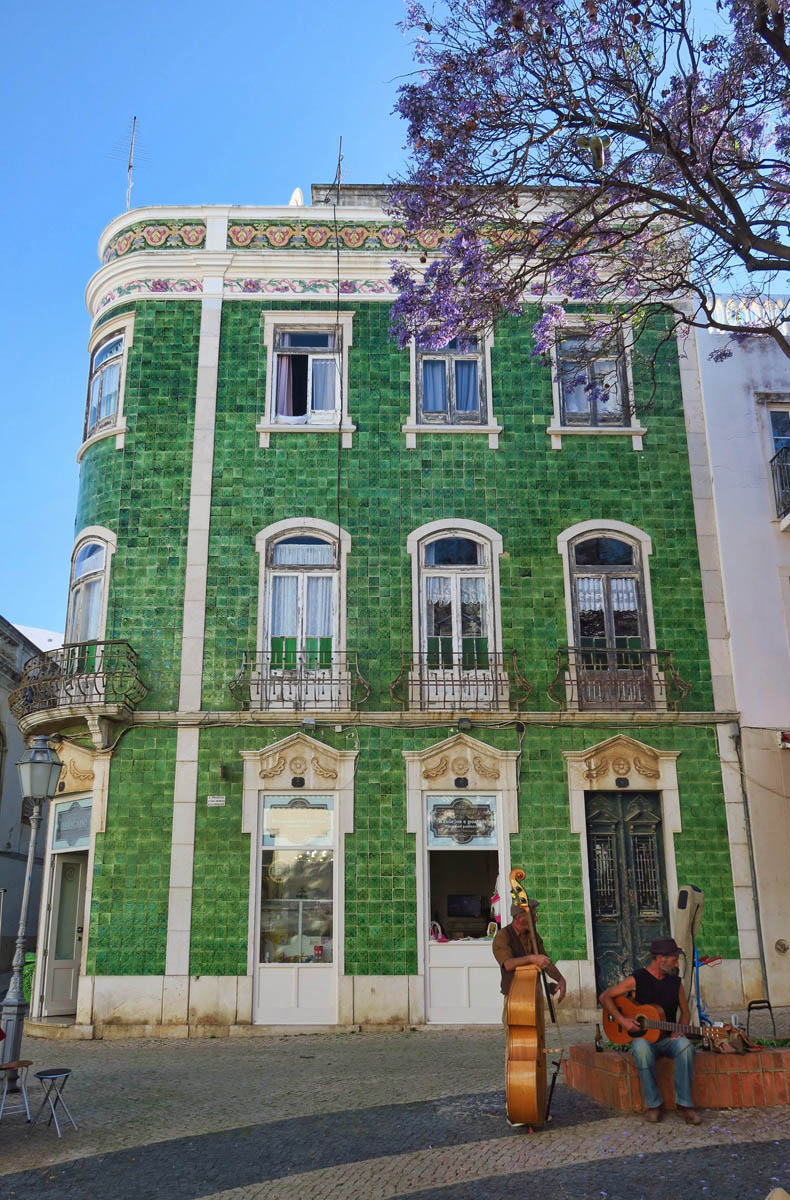 Another beautifully tiled building in the old town, framed by blooming Jacaranda tree and street musicians. 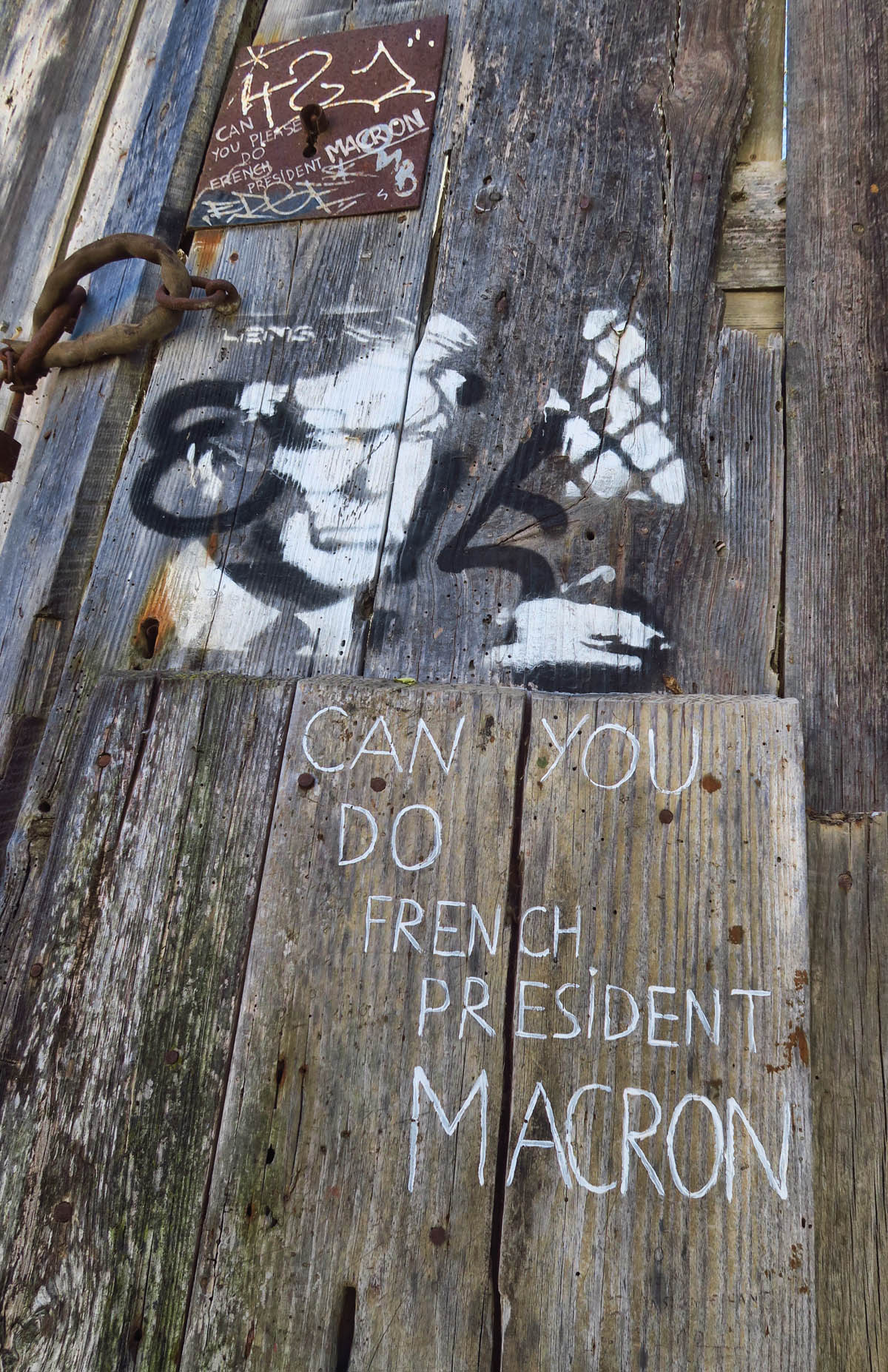 This street artist does a pretty good likeness.

Like so many of the coastal towns in Portugal, there is a bustling “old town” within old stone fortress walls, with narrow cobblestone winding streets and old world shops now turned tourist enclaves. While these old towns offer a plethora of restaurant and bar options, I am happy to be located across the waterway just two blocks from Lagos’ Marina. The almost 500 berth marina is one of the many things that endears me to Lagos, as I must commute through the marina to reach the main part of town each day. I feel a sense of familiarity and longing to be on one of the many sleek, Bristol-fashion, blue water cruisers parked mid-circumnavigation. The “yachtie” ambiance is palpable in the pubs and outdoor cafes I pass (and frequent) while walking through the marina each day. 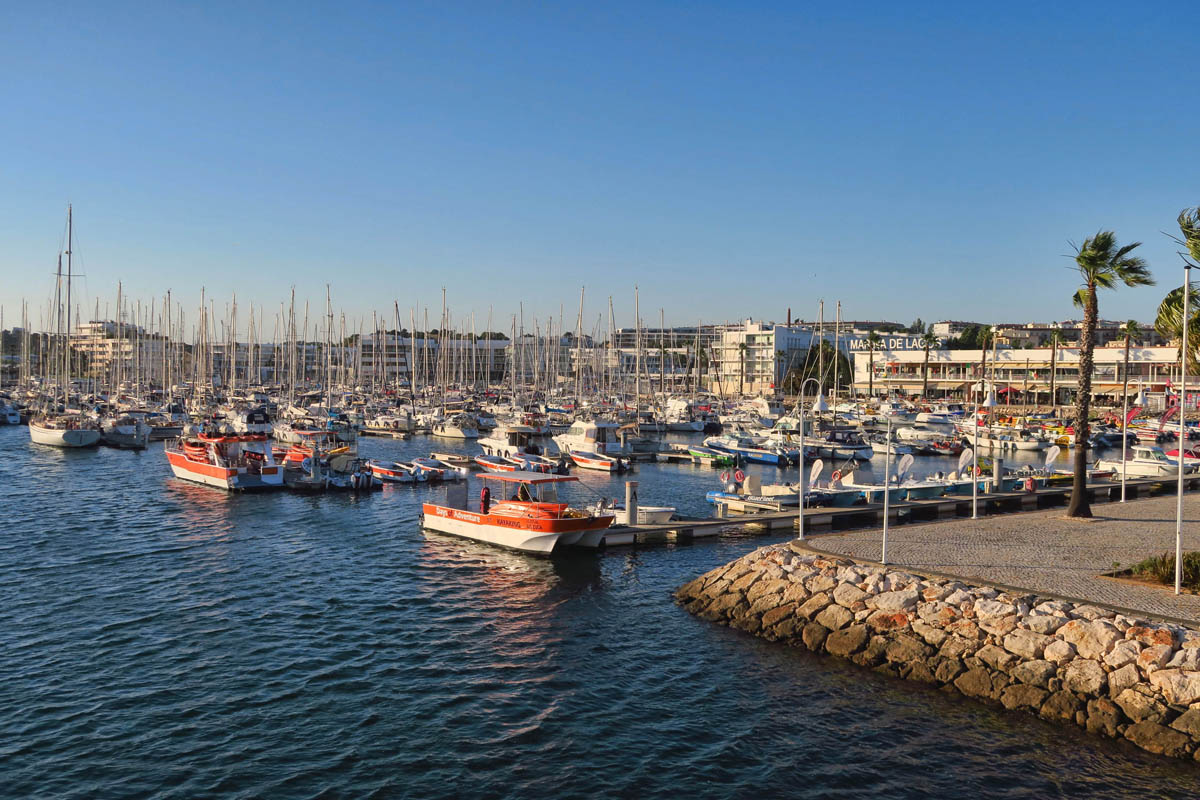 Lagos Marina, location of many pubs and restaurants as well as boat tour companies. 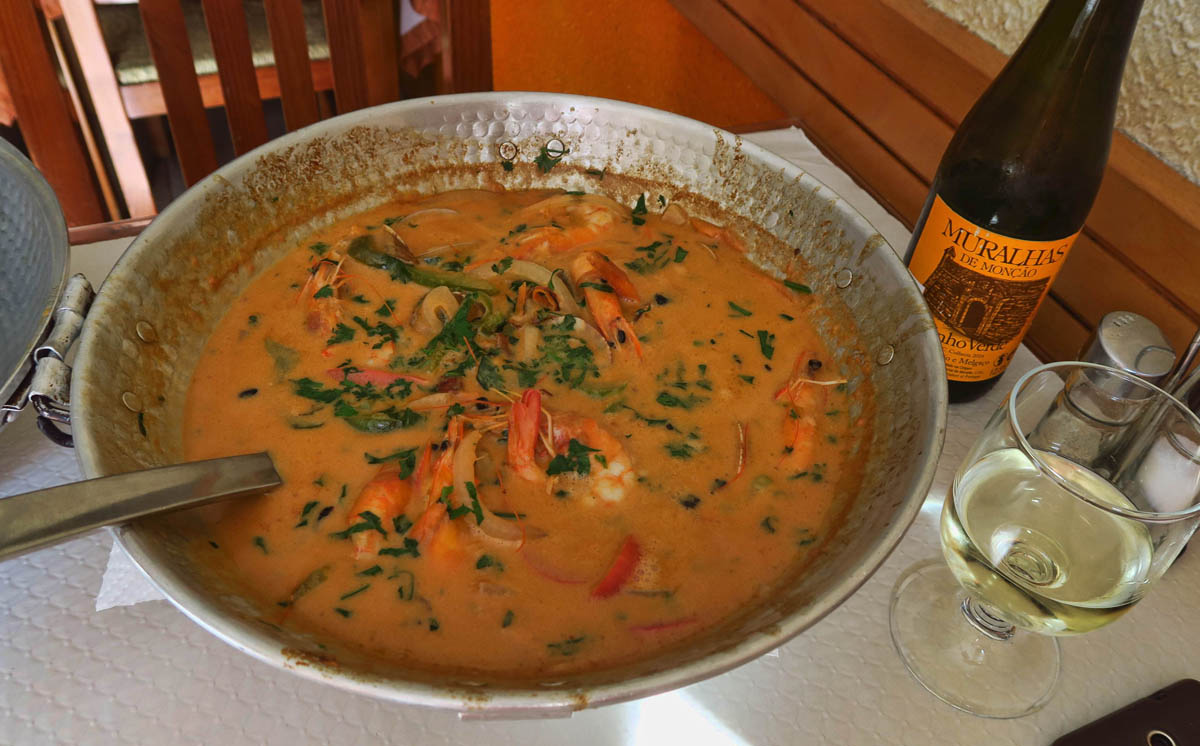 This is “Cataplana,” one of Portugal’s most famous dishes. It’s a seafood stew cooked inside this domed pot. Typically served “for two,” I asked if they could make a single serving so I could try it. I think I may have still gotten the serving for two! (Couldn’t finish it in spite of the fact that it was scrumptious!) 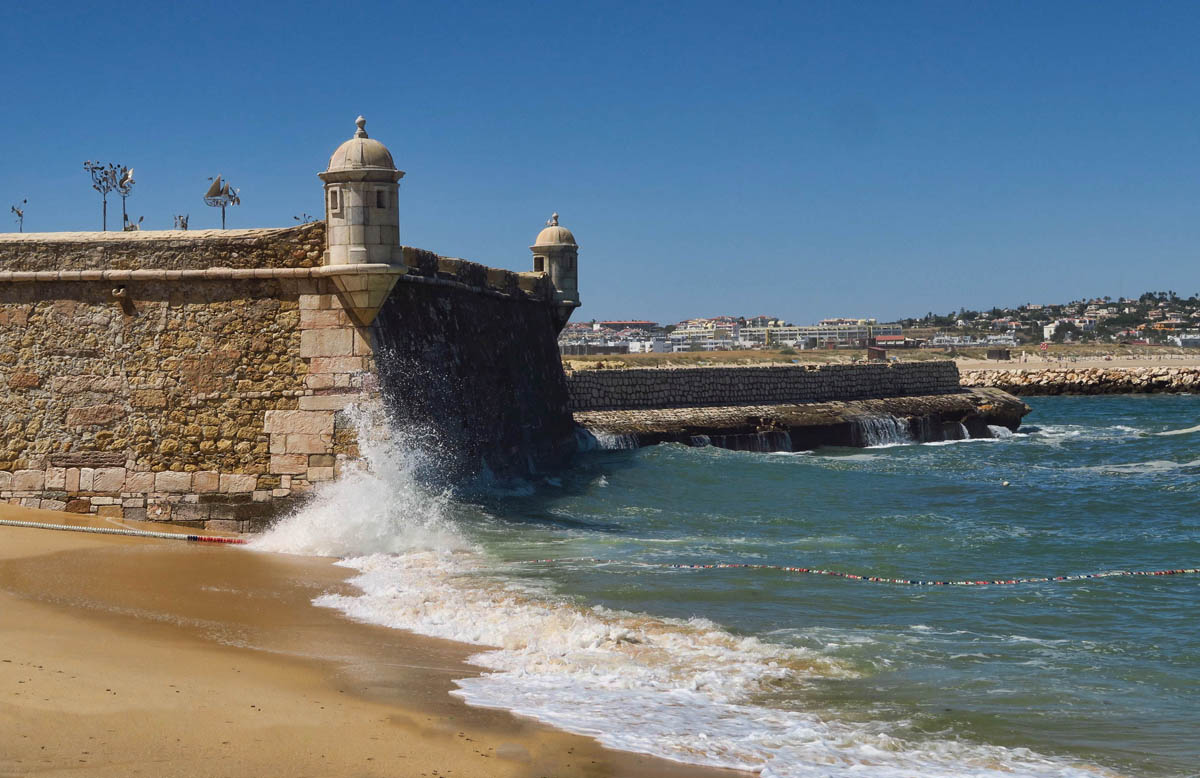 Most coastal towns in Portugal have their old fortresses still in tact, behind which lies the old historic part of the town. 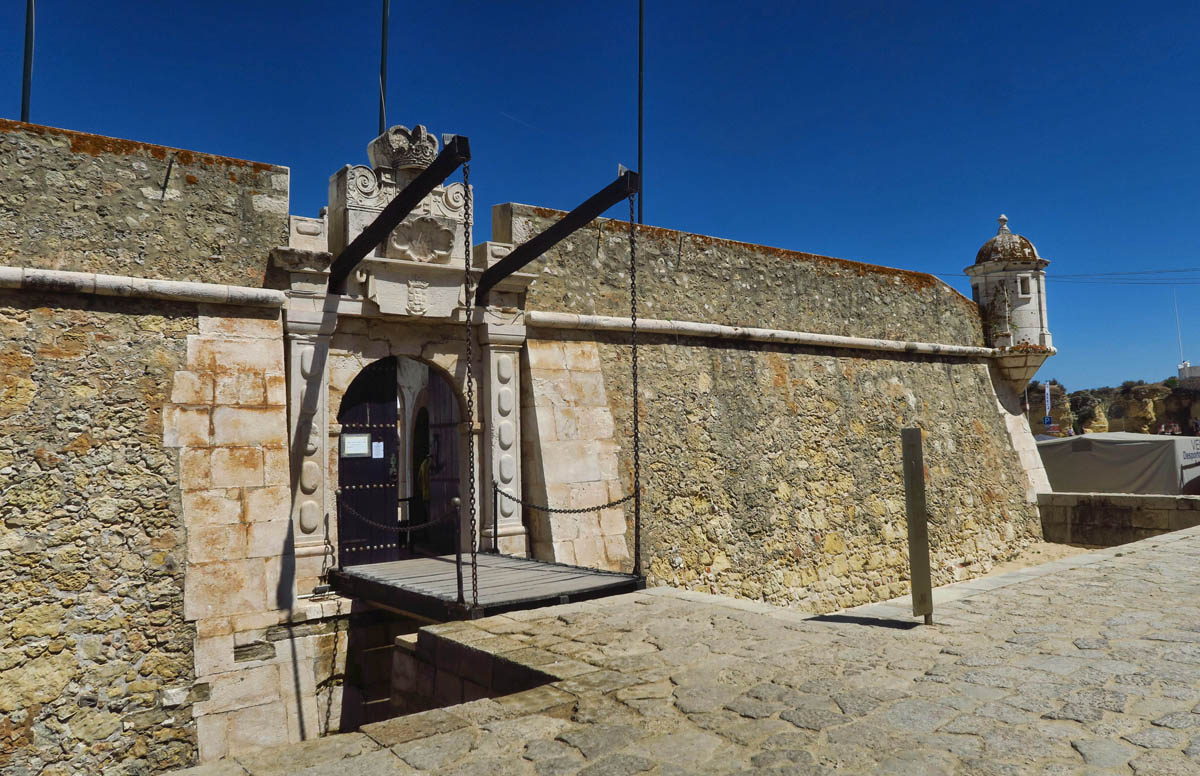 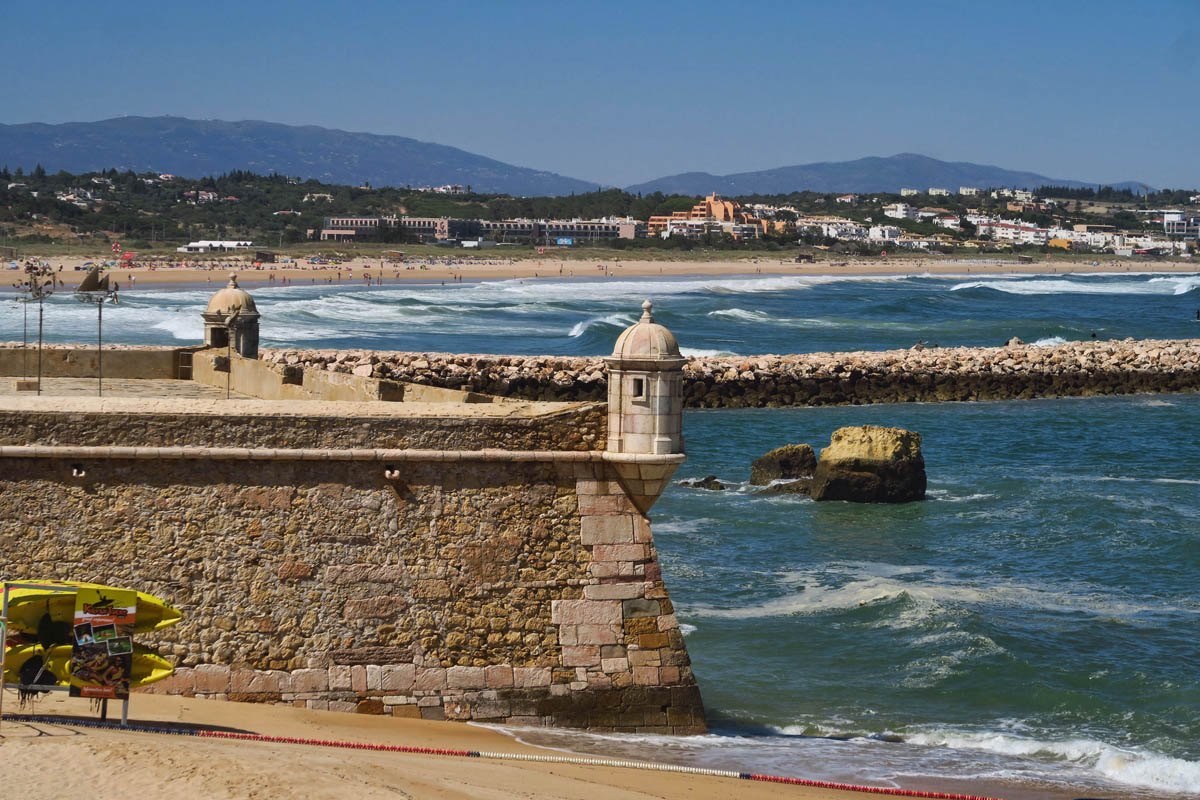 Look beyond the fortress and you will see one of many beautiful beaches that flank Lagos.

Lagos has a string of beaches, each with its own personality. Ideally, one would have a car to explore the Algarve’s scenic coastline, but I am not comfortable doing the driving, navigating, and sightseeing all from behind the wheel in an unfamiliar country. So I am grateful for the goofy tourist train that makes a circuit stopping at all the beaches along the way. It’s goofy in that it looks like a kids train, but efficient and greatly appreciated nonetheless, as it allows me to visit all the beaches in one day and decide which is the “Goldilocks” of beaches where I will spend more time. 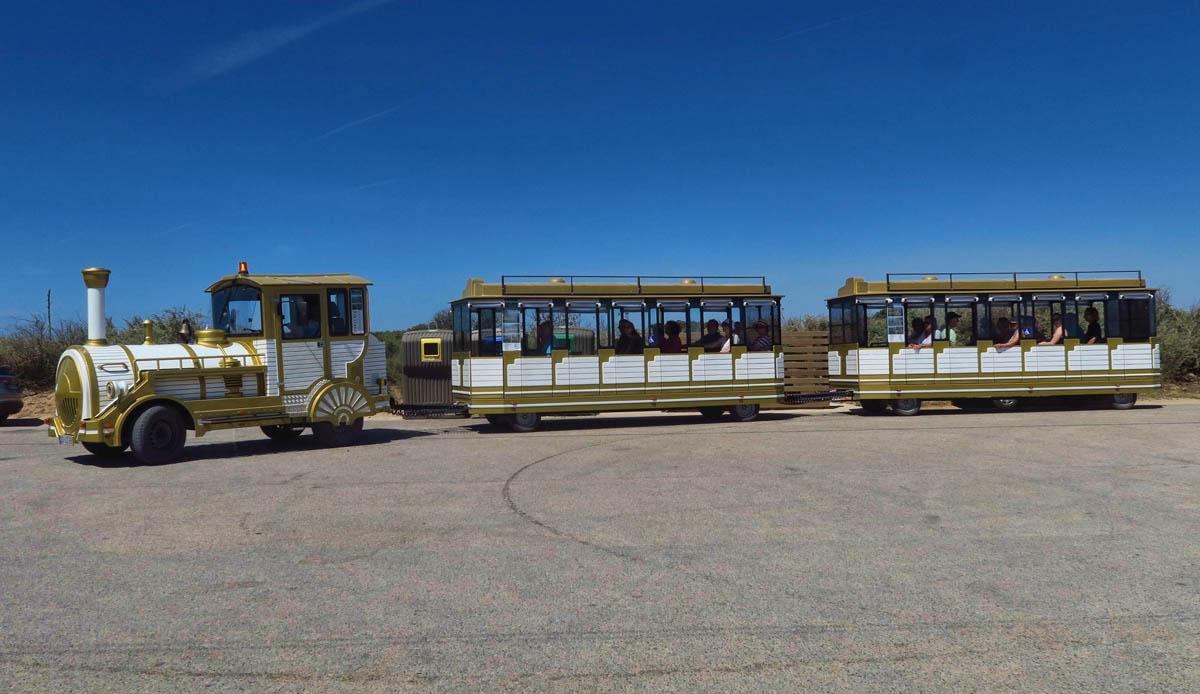 Riding the toy train would almost be embarrassing if it didn’t take me exactly where I want to go. 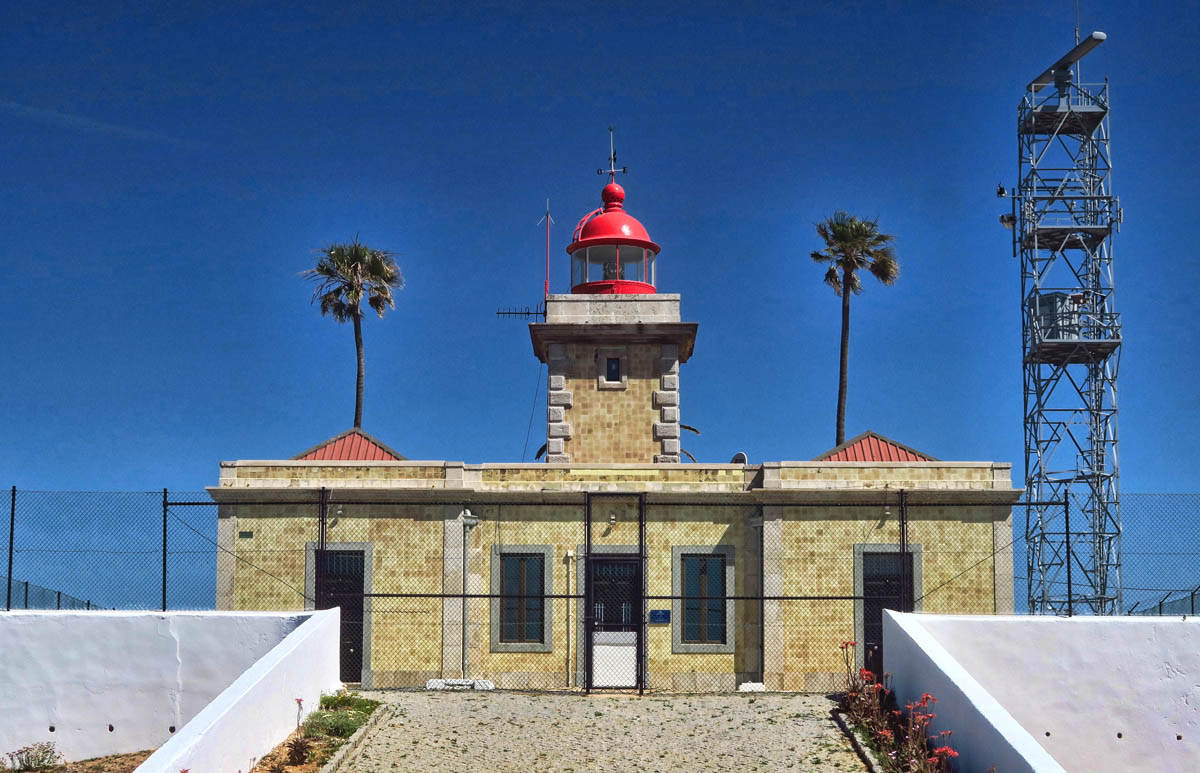 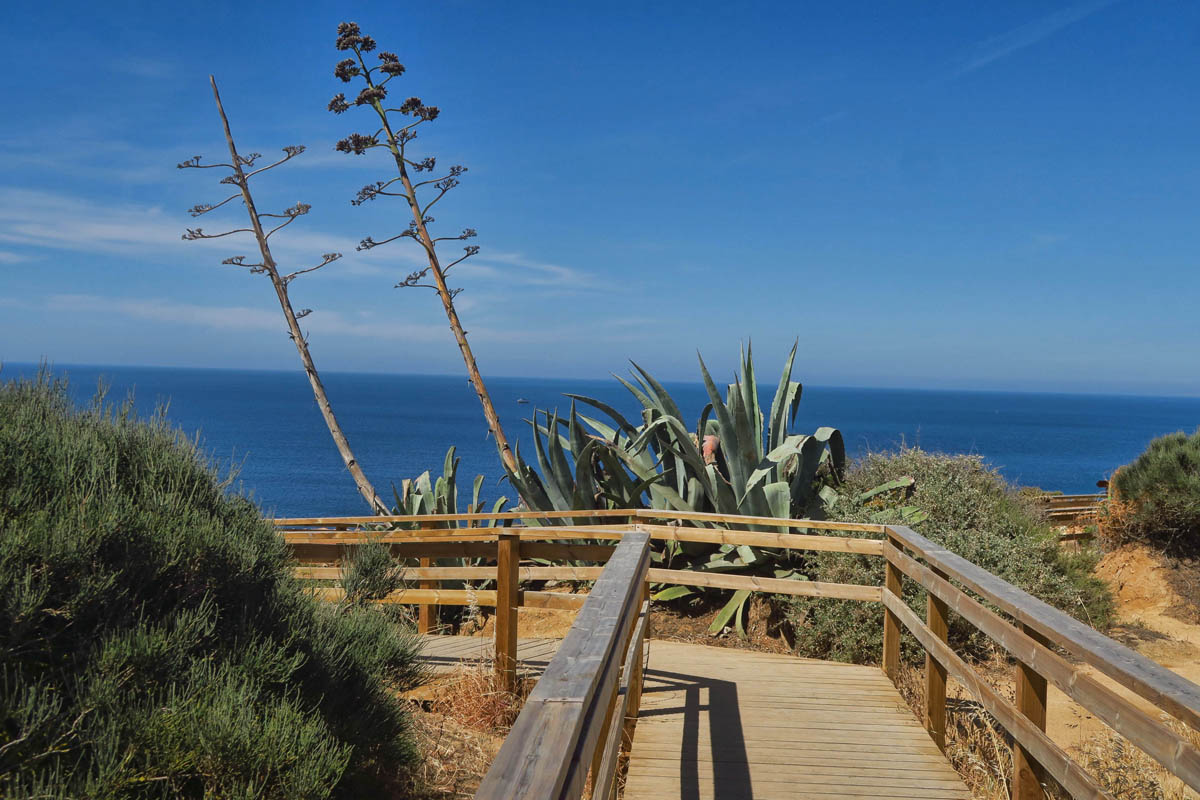 Lots of ways to explore the cliffs, including a nice boardwalk. 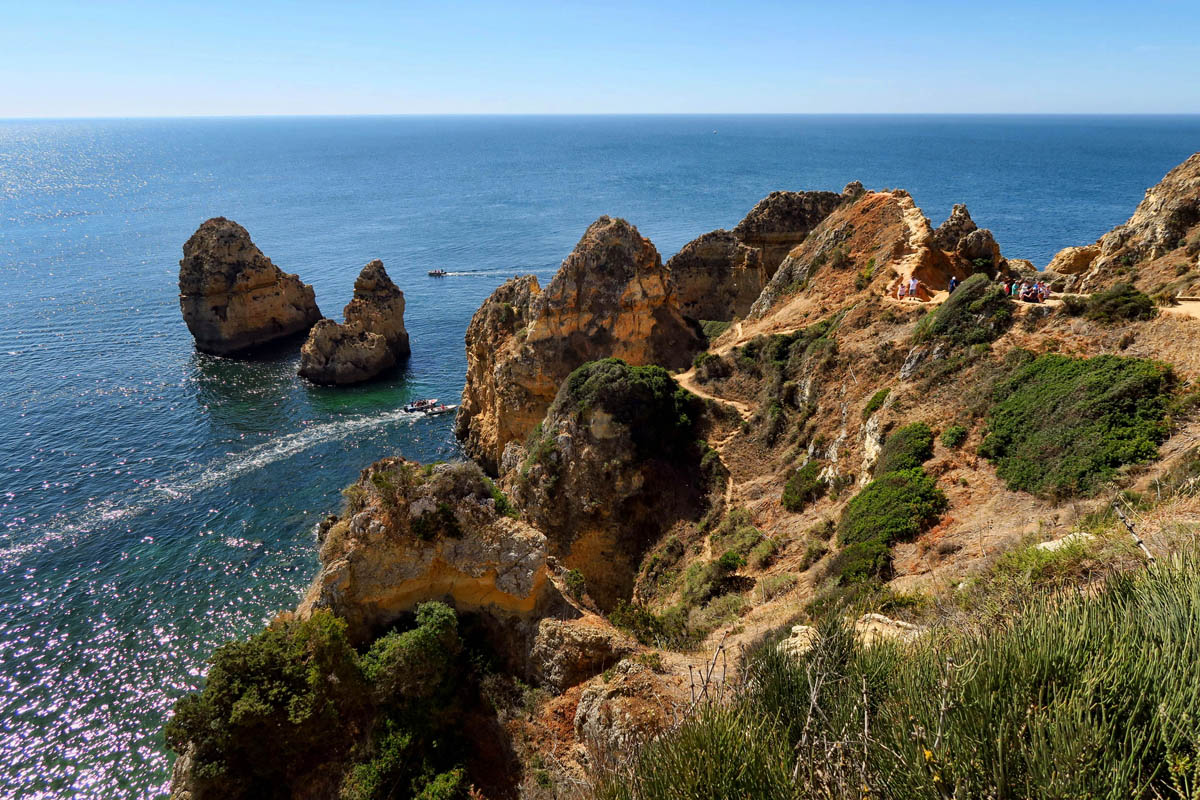 There are also some short hiking trails in the area, as well as paths to nearby beaches. 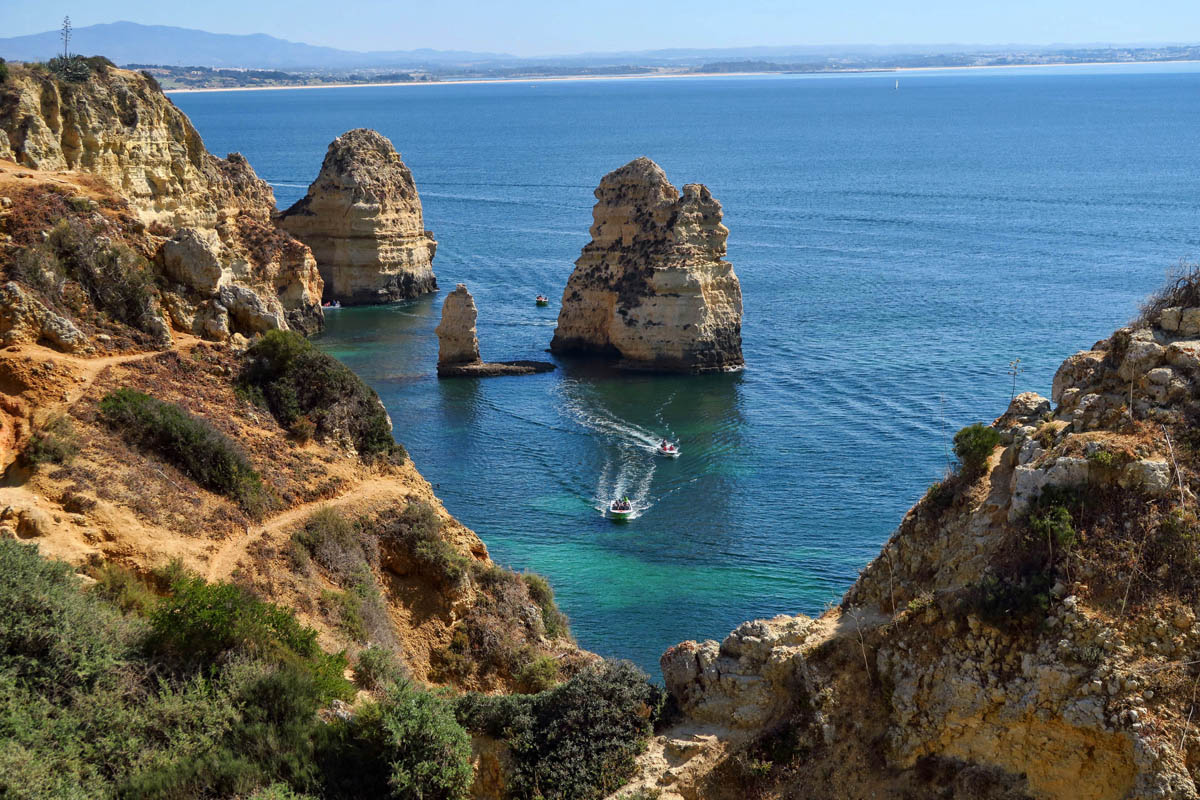 Views from the top are breathtaking! 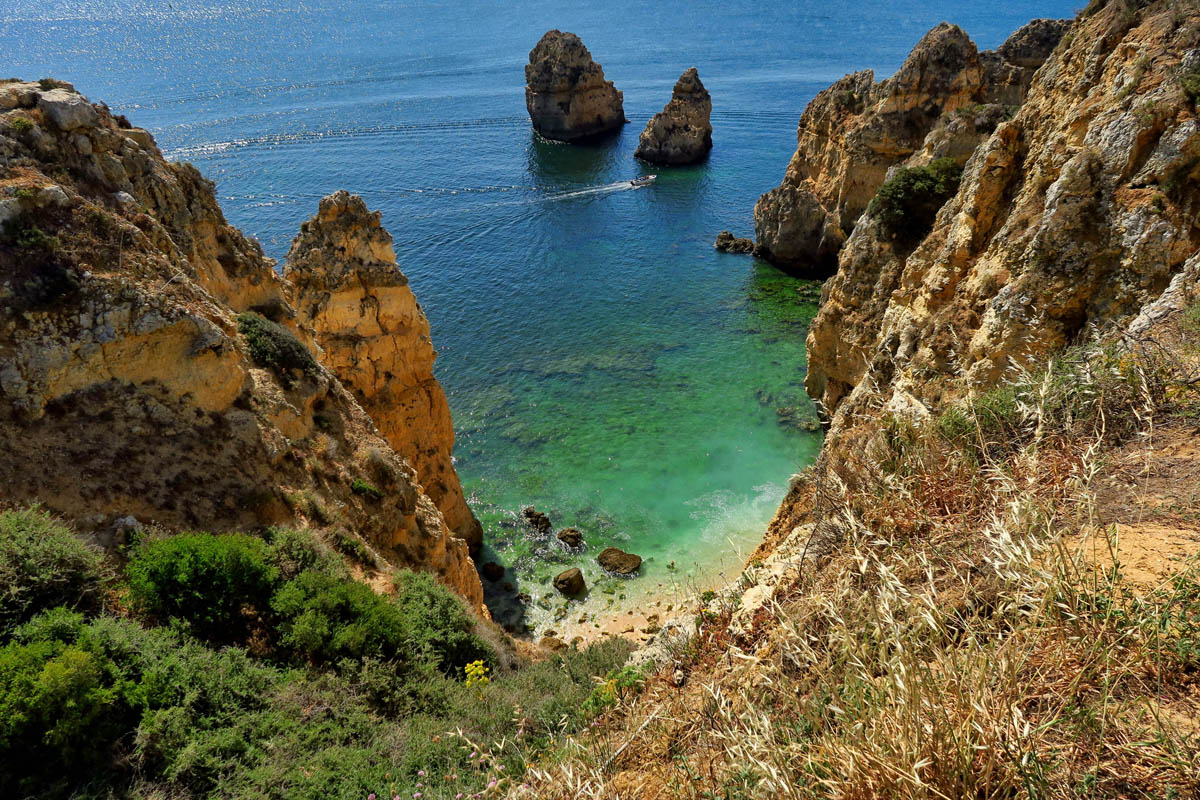 The water is so clear you can see the bottom! 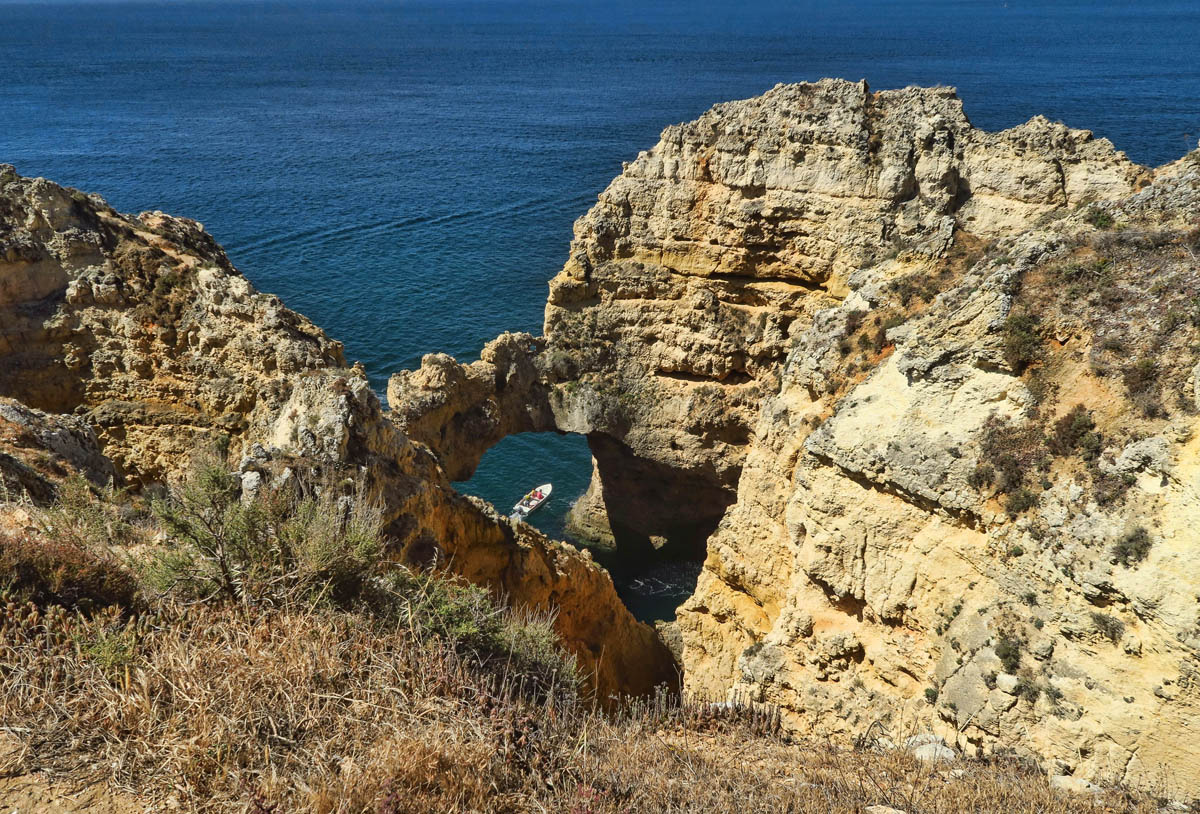 This arch is called “The Cathedral.” 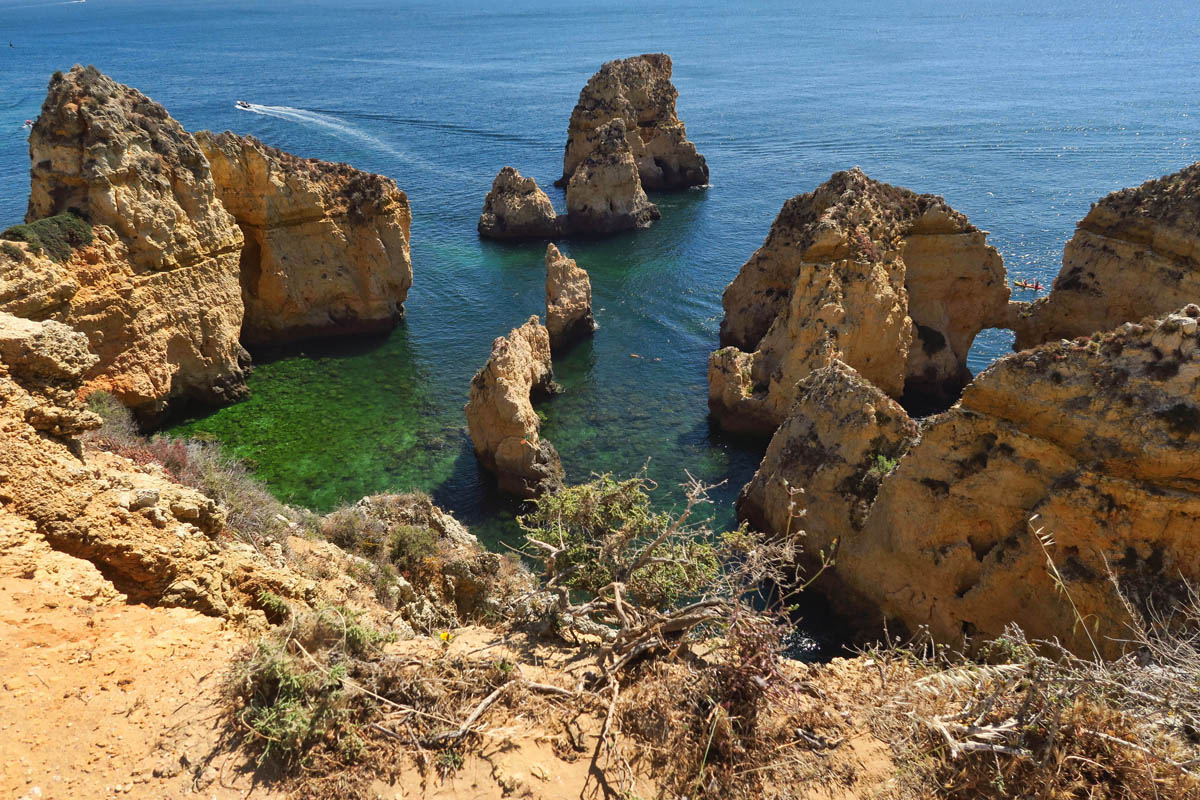 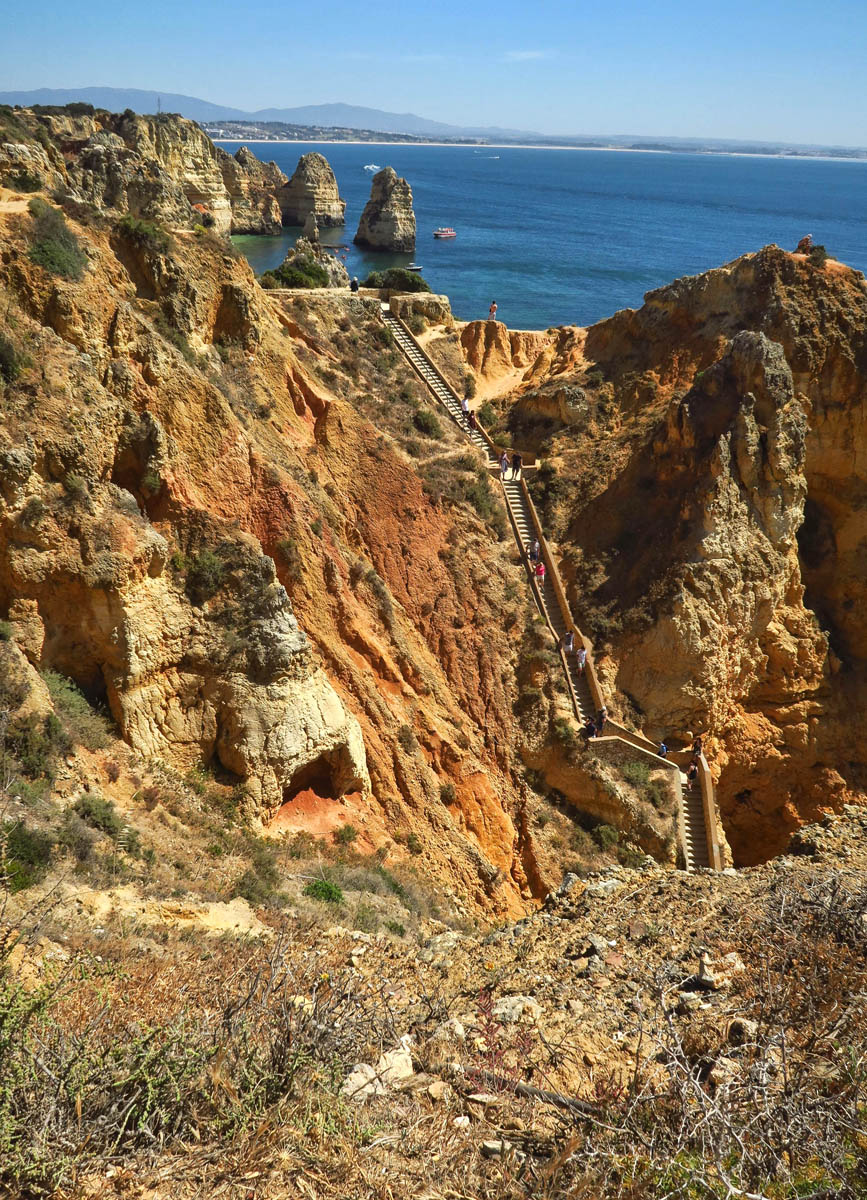 Look closely to see the giant staircase that goes all the way down to the water. 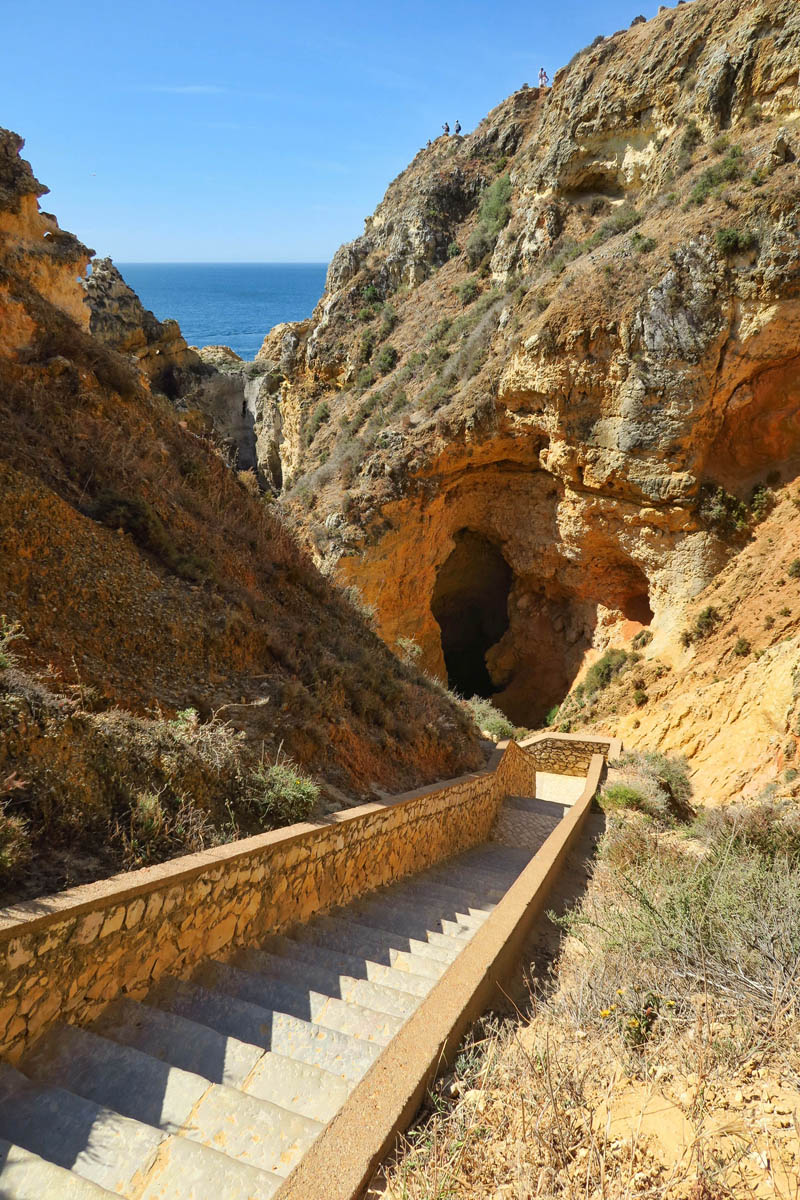 Well, may as well get started…

The toy train also makes a stop at the Ponta da Piedade headland, location of Farol da Ponta da Piedade, my first legit Portugal lighthouse. In operation since 1913, it stands 167 feet. While thrilled to pieces to be seeing it for the first time, I would soon learn that Portugal does not embrace the same level of tourism for their lighthouses as we do in the US. Most tourists seem content with snapping a photo in passing, while I linger, hanging on the rungs of the gate, wondering if there is a way in. Rarely are they open, but rather more often locked up and fenced in like defense systems. If they do open at all, it’s typically from 2pm to 5pm on Wednesday afternoons. 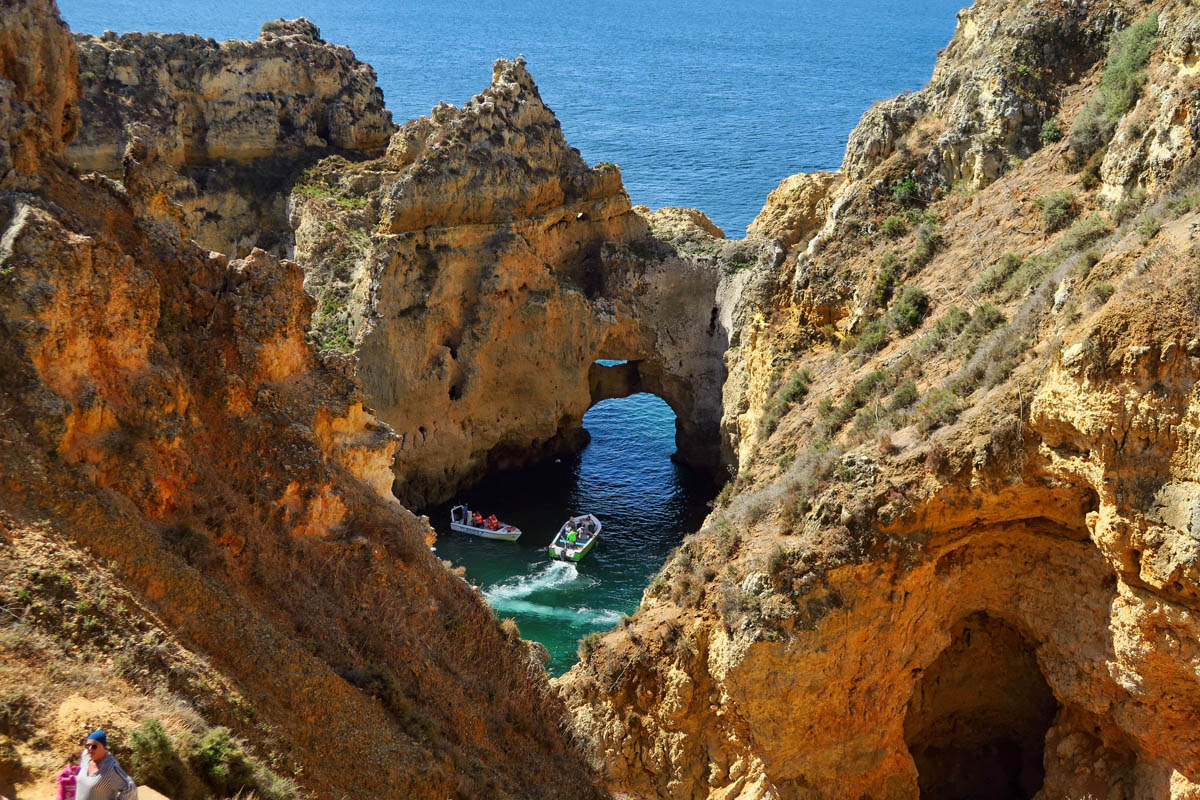 Lots of boat tours, both coming from the marina, as well as booked right here at the base of the stairs. 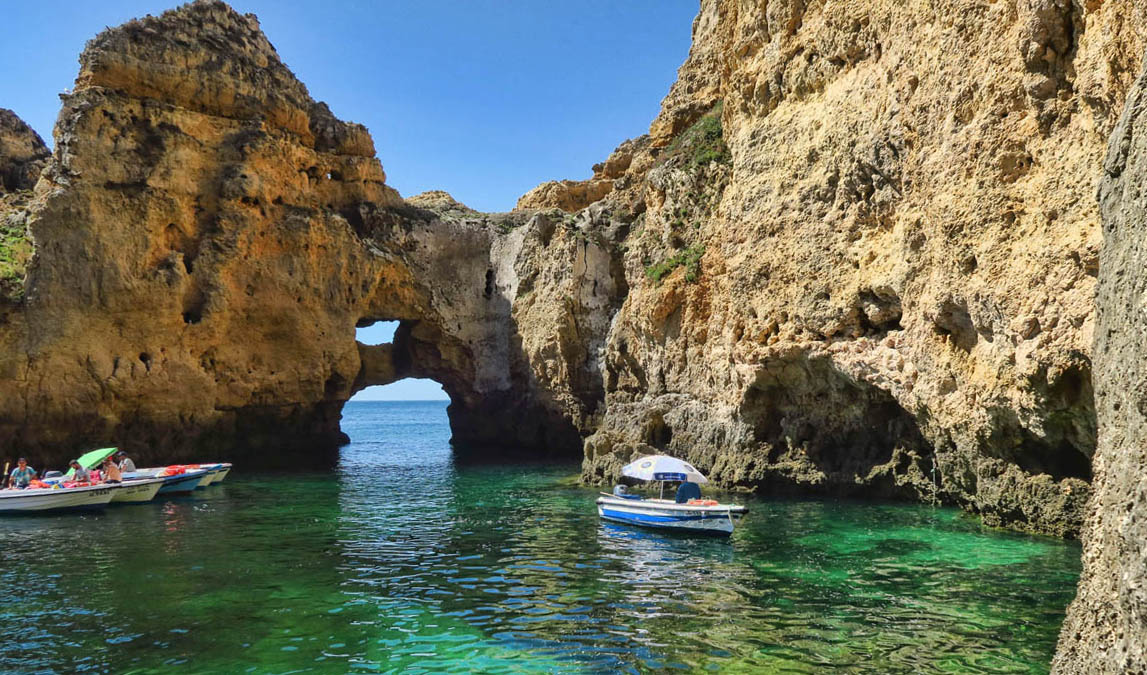 Unfortunately they don’t let you swim here…too much boat traffic. 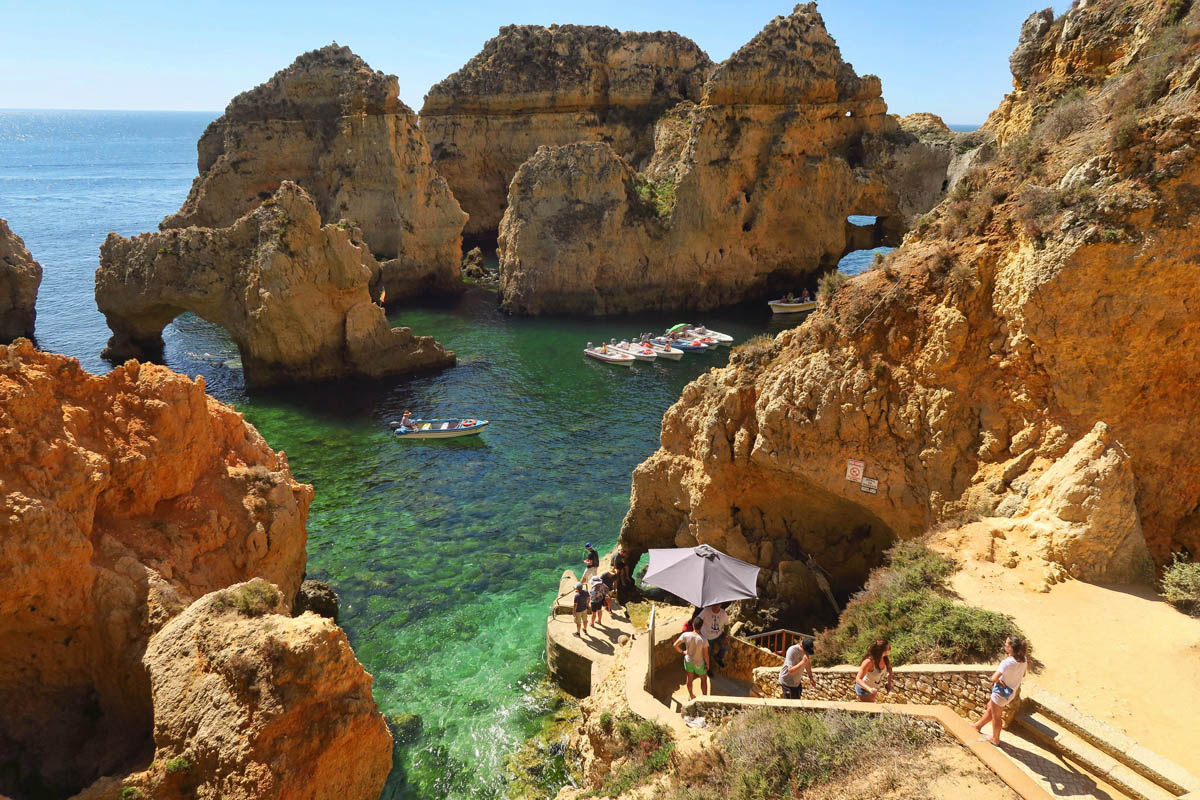 The promontory where the lighthouse is located looks out over the staggering karst formations that make up the jagged coastline of this section of the Algarve. Golden sandstone pillars and arches jut up from turquoise water so clear you can see the pebbles that line the ocean floor. Hiking trails along cliff-top boardwalks and monster staircases lead down to the water’s edge, where you can hop on a boat for a tour of the grottoes. But I’ll save that for the next post, “Two if by Sea.”