As I mentioned in my previous post, my guesthouse while staying in Lagos is located only two blocks from the Lagos Marina, where dozens of boats come and go daily. There are a plethora of boat tour operators working from kiosks along the dock offering kayaking tours, speedboat tours, and sightseeing trips to the grottoes.

One trip that has piqued my interest is a little further away, to a cave known as Algarve de Benagil. It’s not only a massive cave with two entrances to access a small a beach, but it has a giant hole in the roof. The photos on the kiosk poster are spectacular (of course, I later learn the vantage point looking out through the holes on their ad poster is impossible, as boats are not allowed to land on the beach.) While the trip to Benagil is longer, a little rougher ride, and a little more expensive, it’s still my desire to see it. 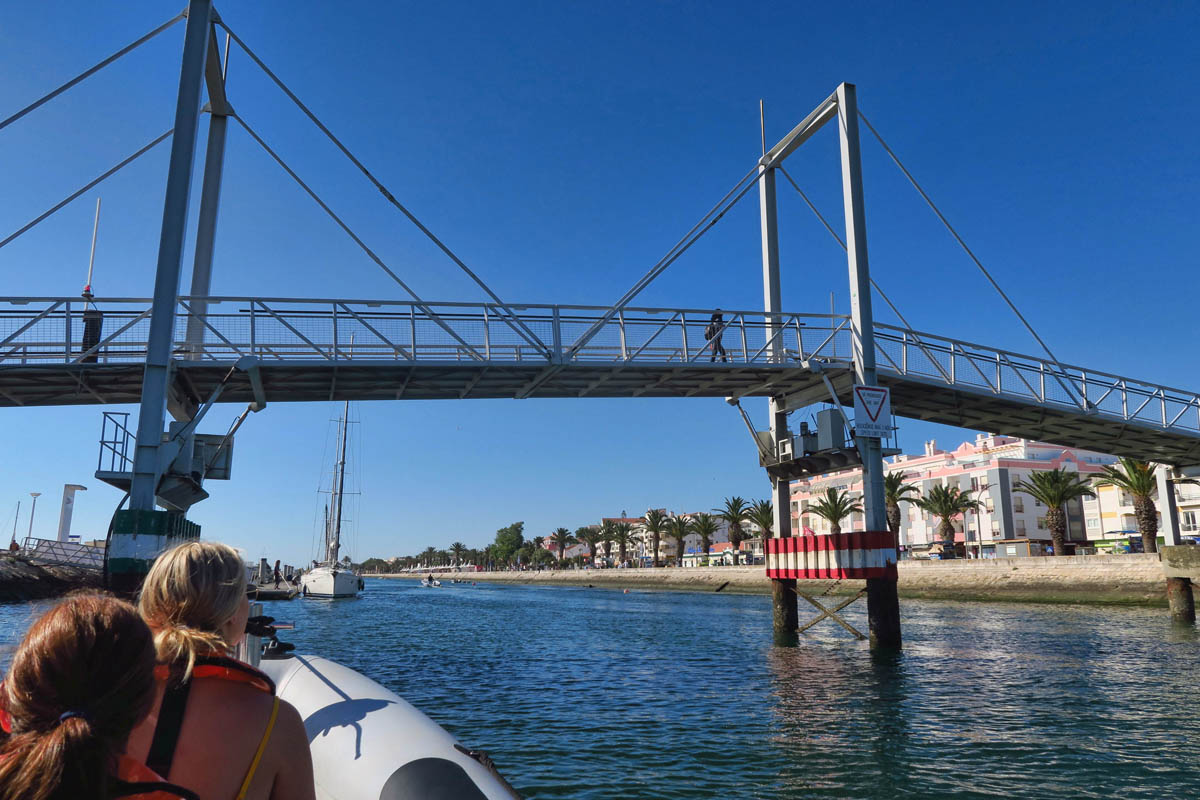 Leaving Lagos Marina, all boats must pass under the pedestrian draw-bridge, which raises for tall-masted sailboats. 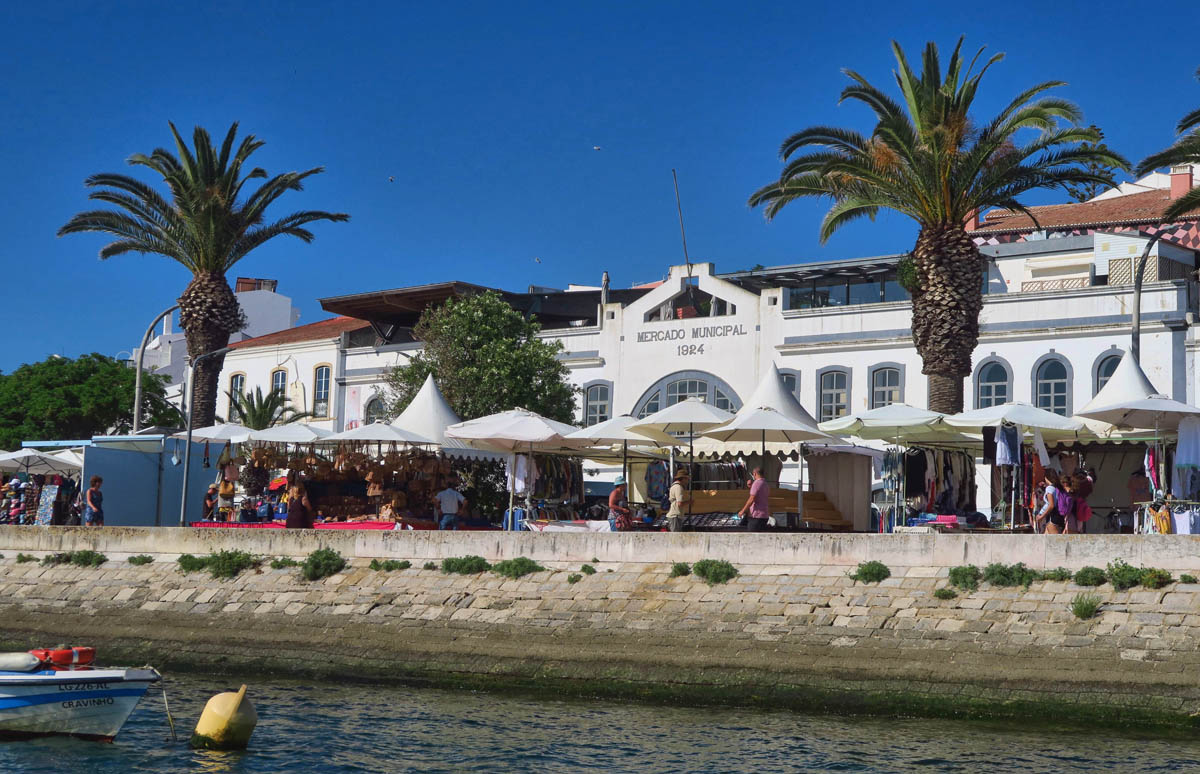 Heading out of the waterway, we pass the “Mercado Municipal,” built in 1924, which houses Lagos’ abundant fish market today. 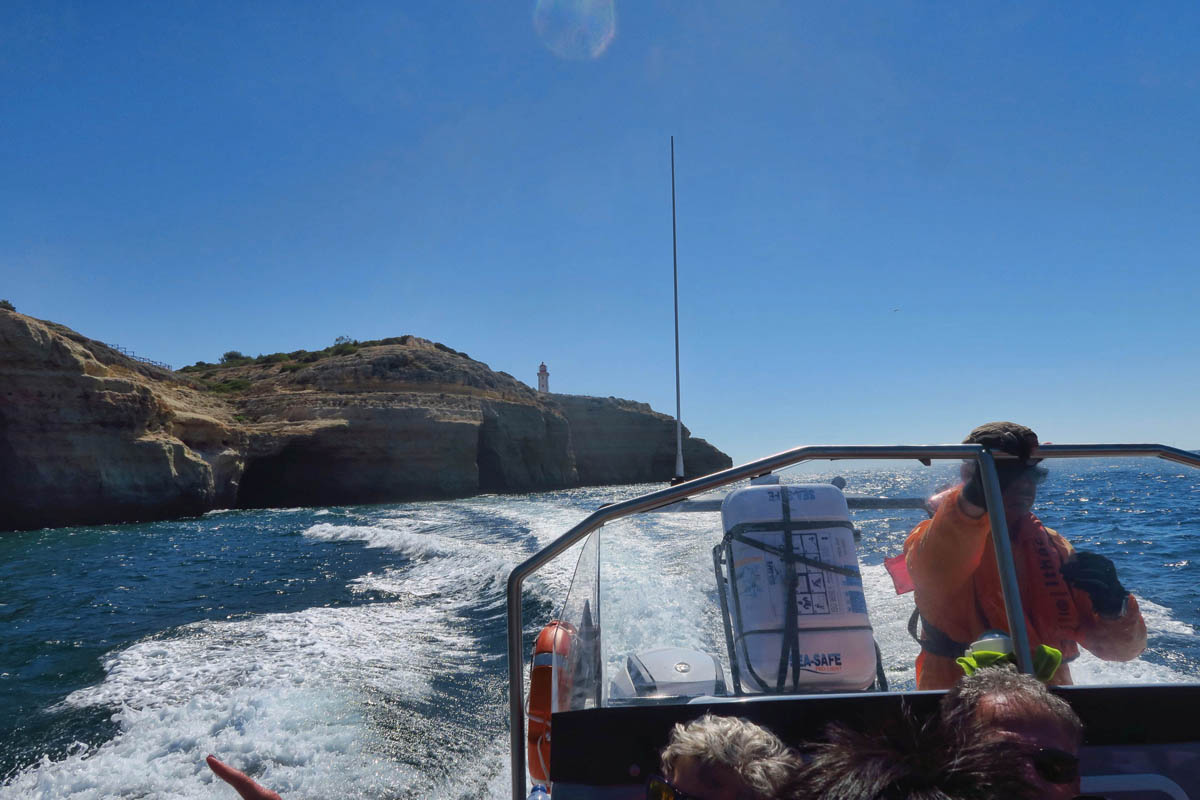 It still takes 45 minutes to reach Benagil Cave from Lagos. Easier to access by bus or car, but not as refreshing. 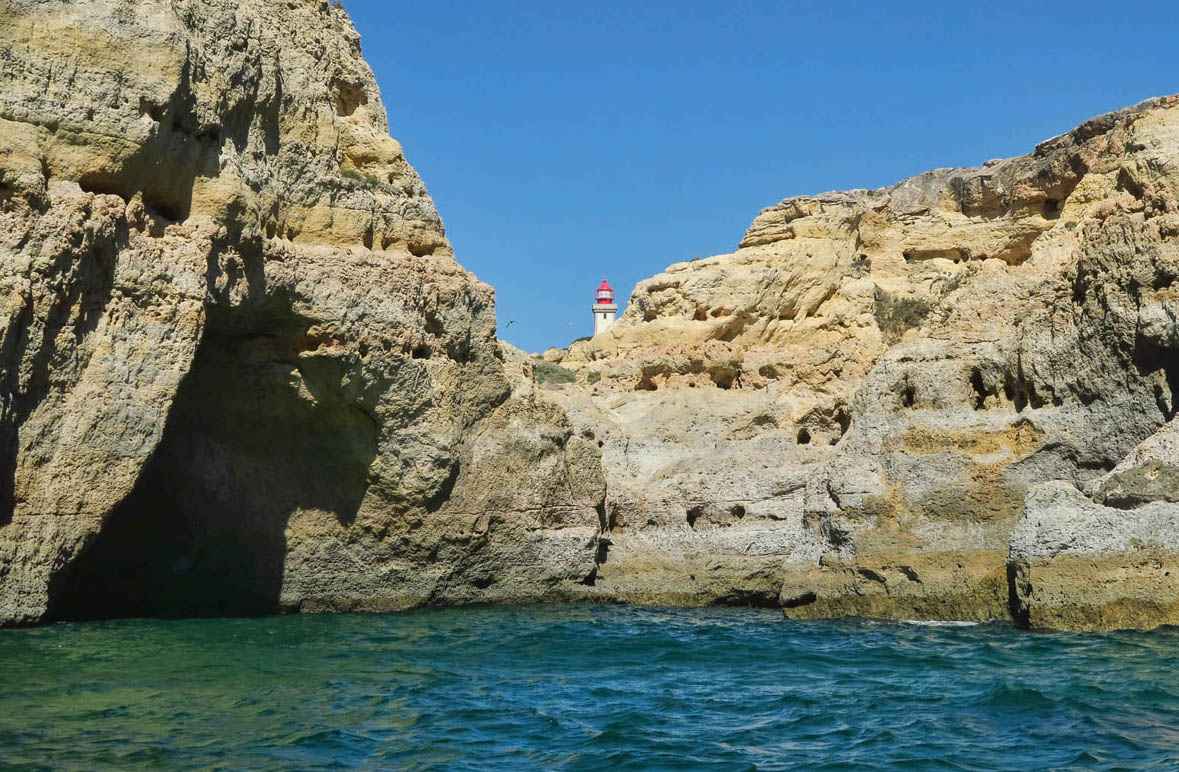 The boat ride has some gorgeous scenery, obviously. Can you see what I see in the V of the rocks? 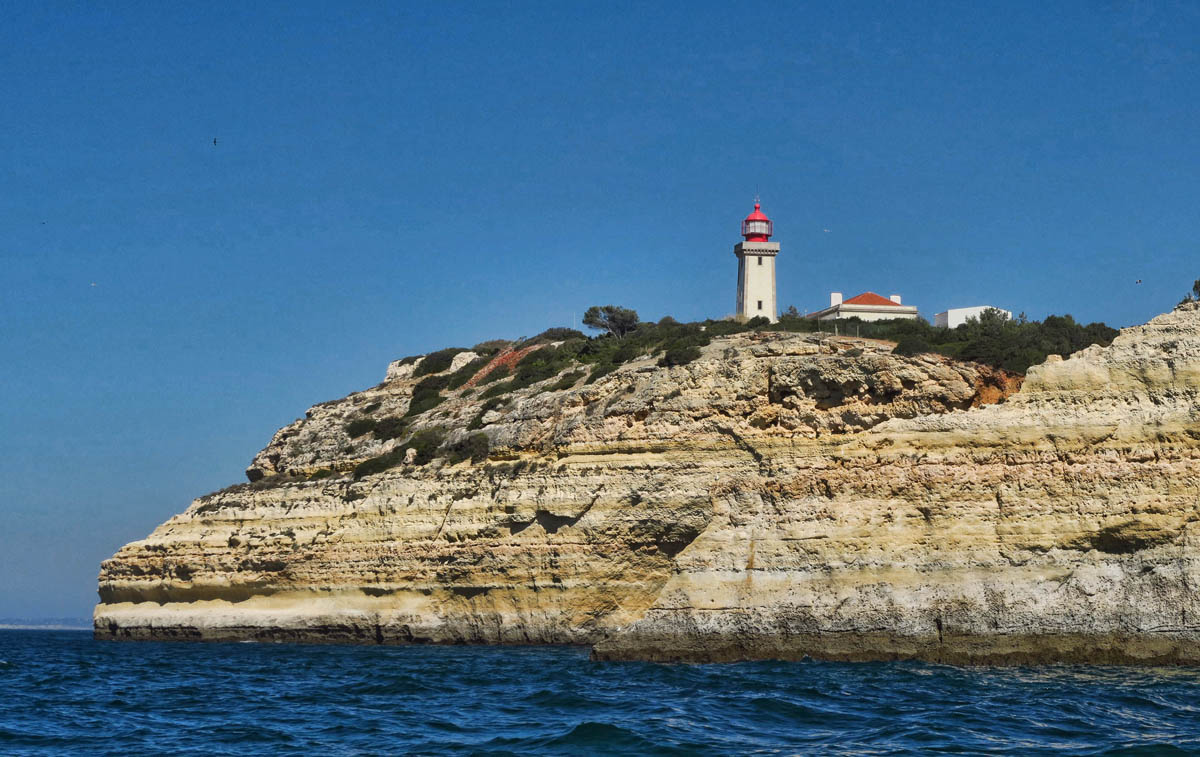 Motoring by for a closer look. 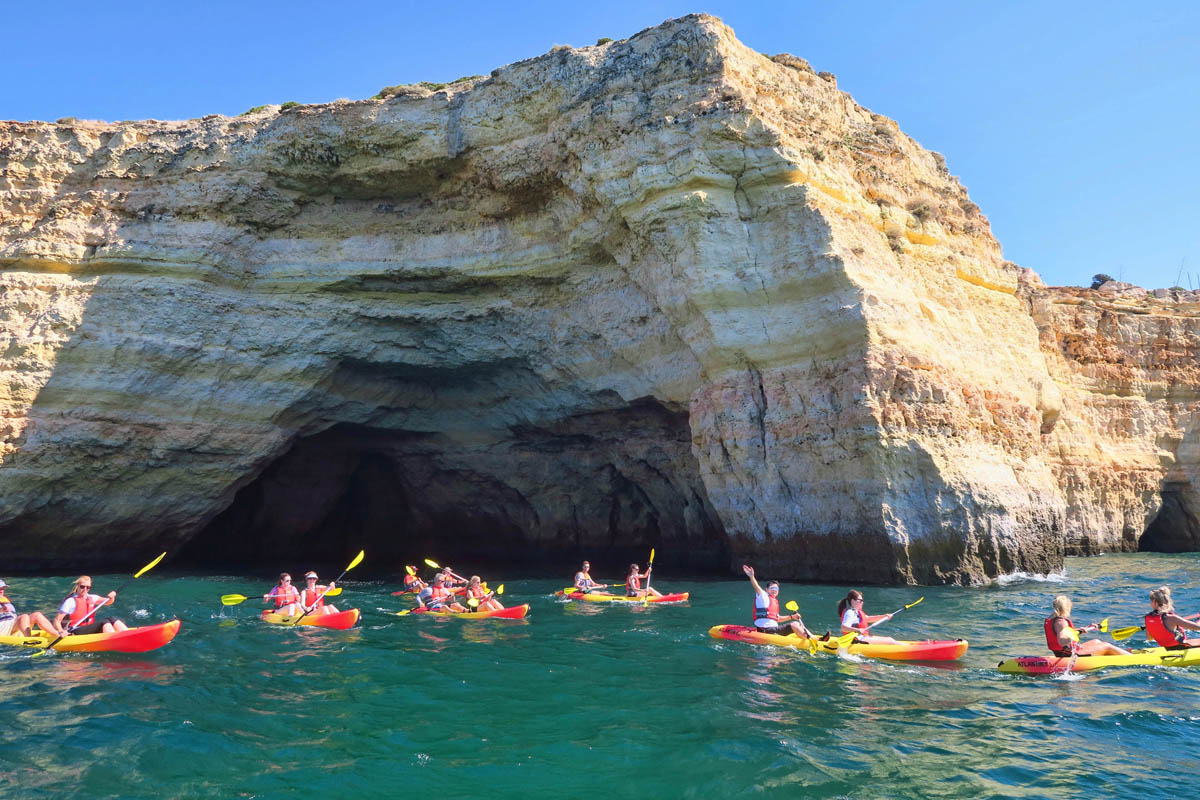 While there are often times when I envy kayakers on the water, this is NOT one of those times!

I stop by the kiosk to inquire as to schedules to Benagil, when I learn my window of opportunity is closing. While the weather is near-perfect with blue skies, there’s a large swell in the Atlantic moving in from Africa. The boat operators have been watching for two weeks now, and expect it to arrive in two days, at which time the harbor will be closed, and no access to the caves will be possible. So that’s one incentive to help me make my decision. The other incentive is the boat operator offers a tour to the grottos half price if purchased on the same day. So it will be a two-boat day on the water!

The boat passes many gorgeous beaches, cliff-top boardwalks, and a lighthouse on our way to and from Benagil cave. Just like riding the goofy toy train on land, the boat trip offers me a chance to see areas of the coastline I wouldn’t otherwise be able to see without a car. 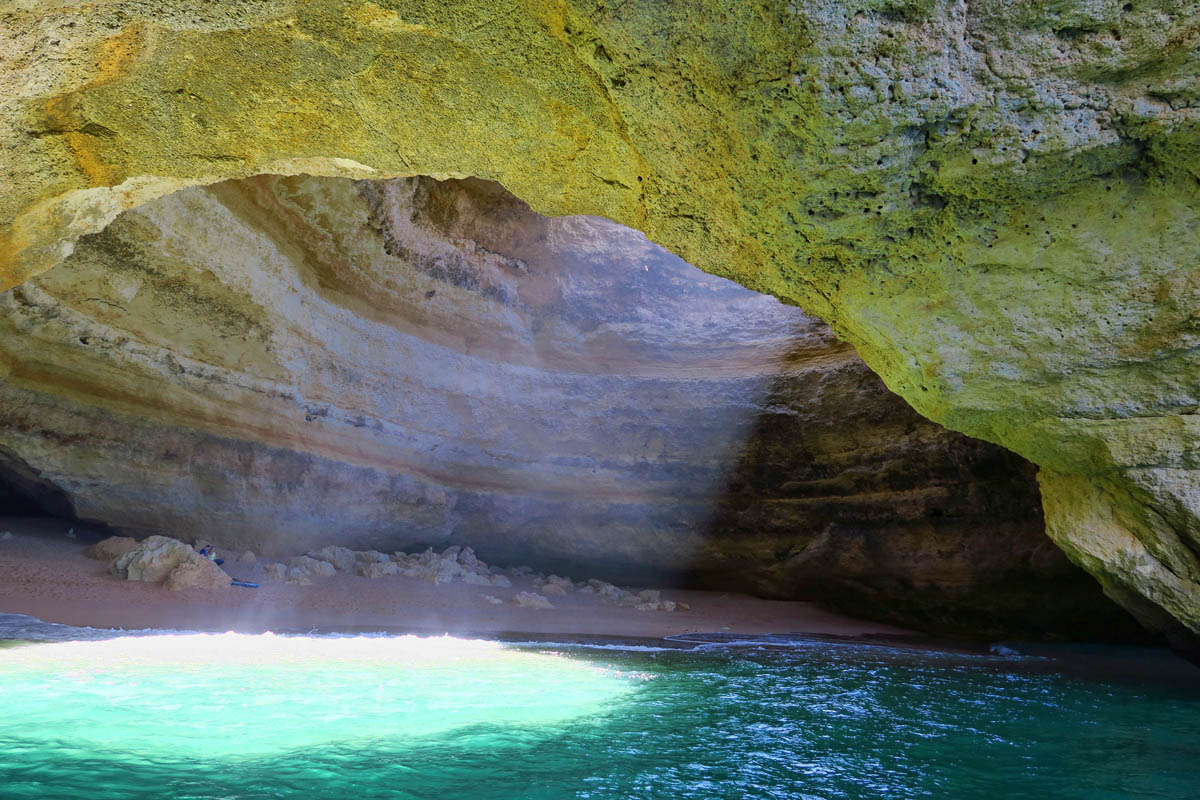 Even though we are not allowed to come ashore, it’s still a beautiful spot. 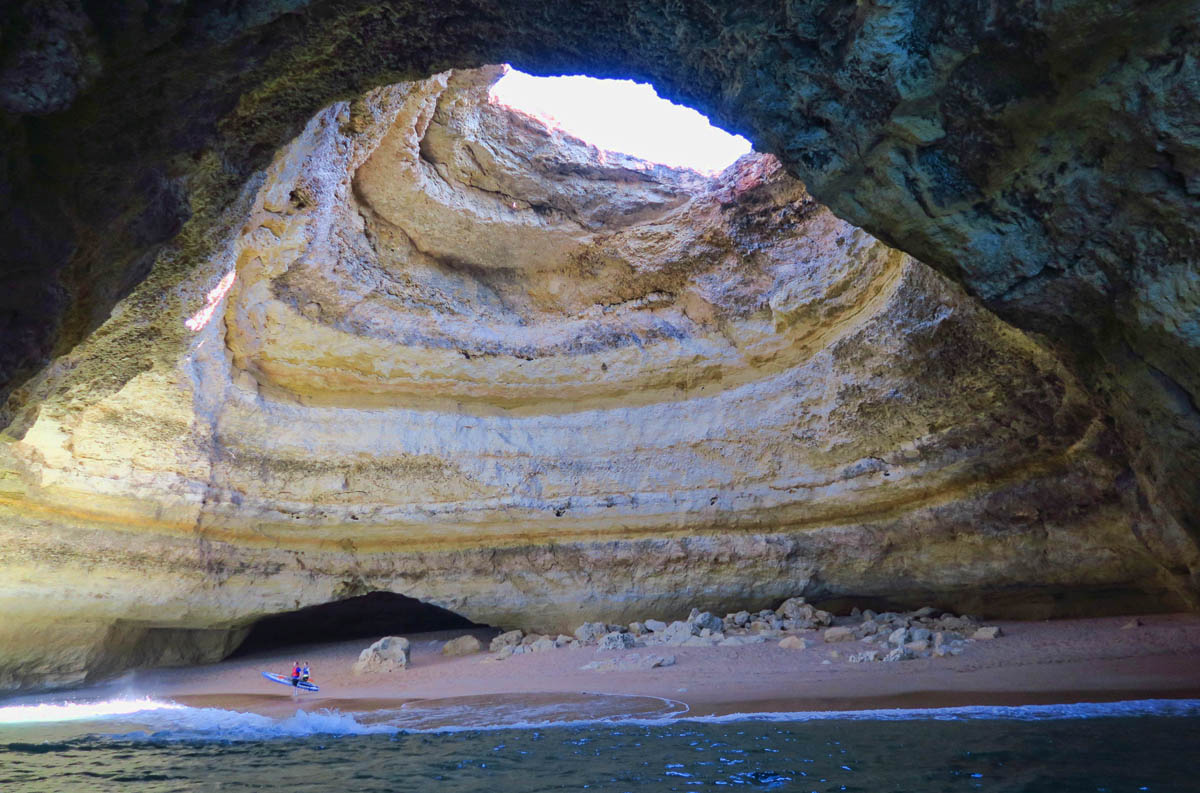 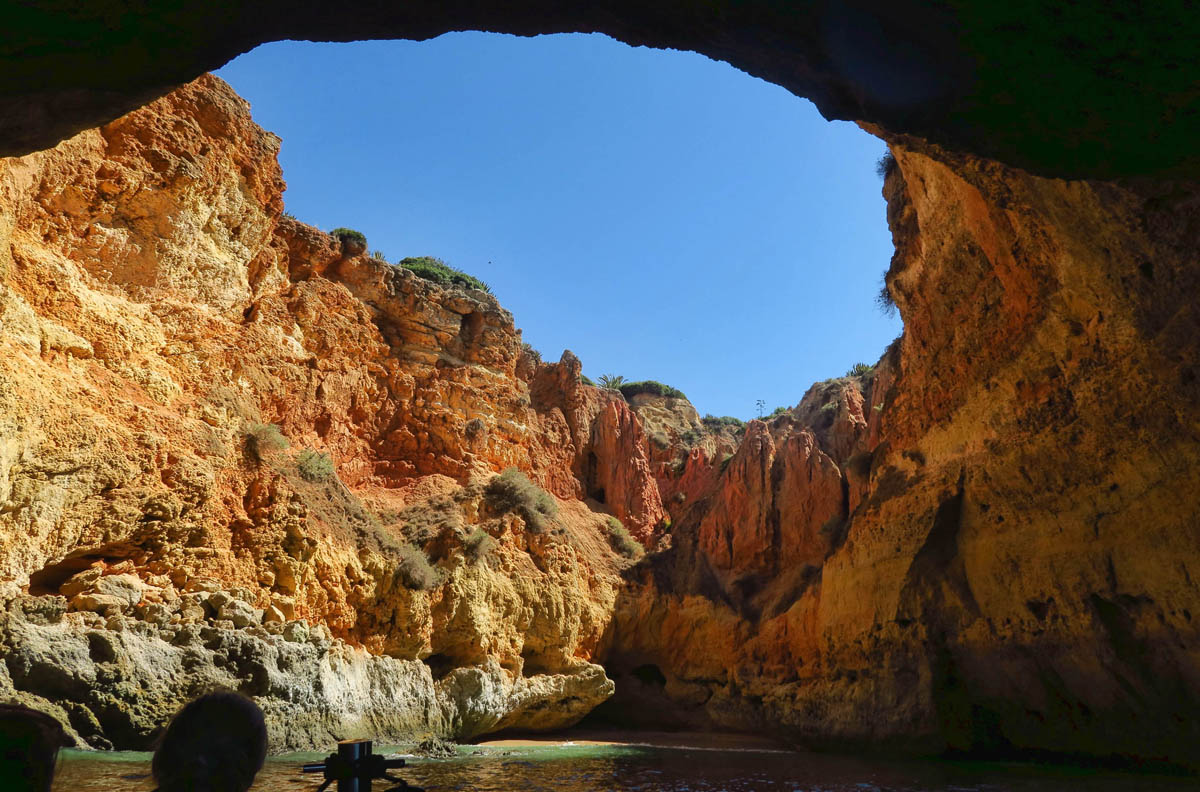 The Benagil tour makes other stops along the coastline. 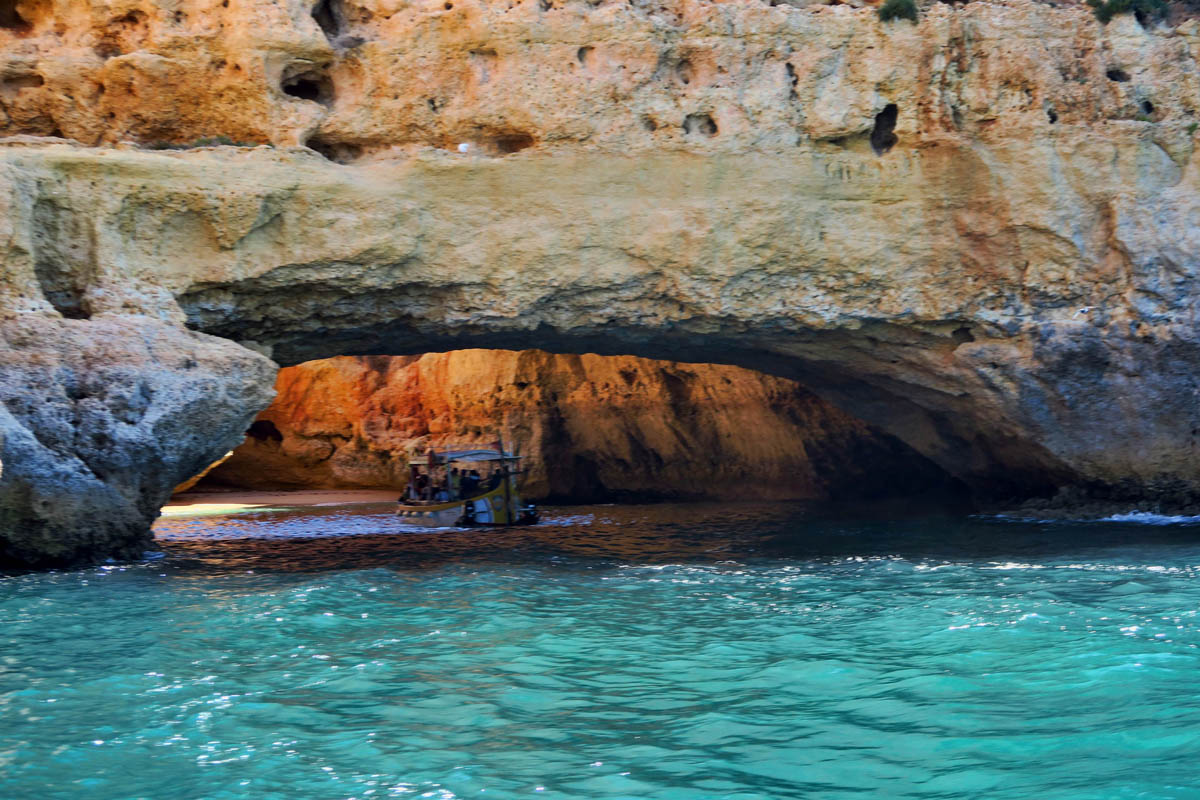 Waiting our turn to enter another cave. 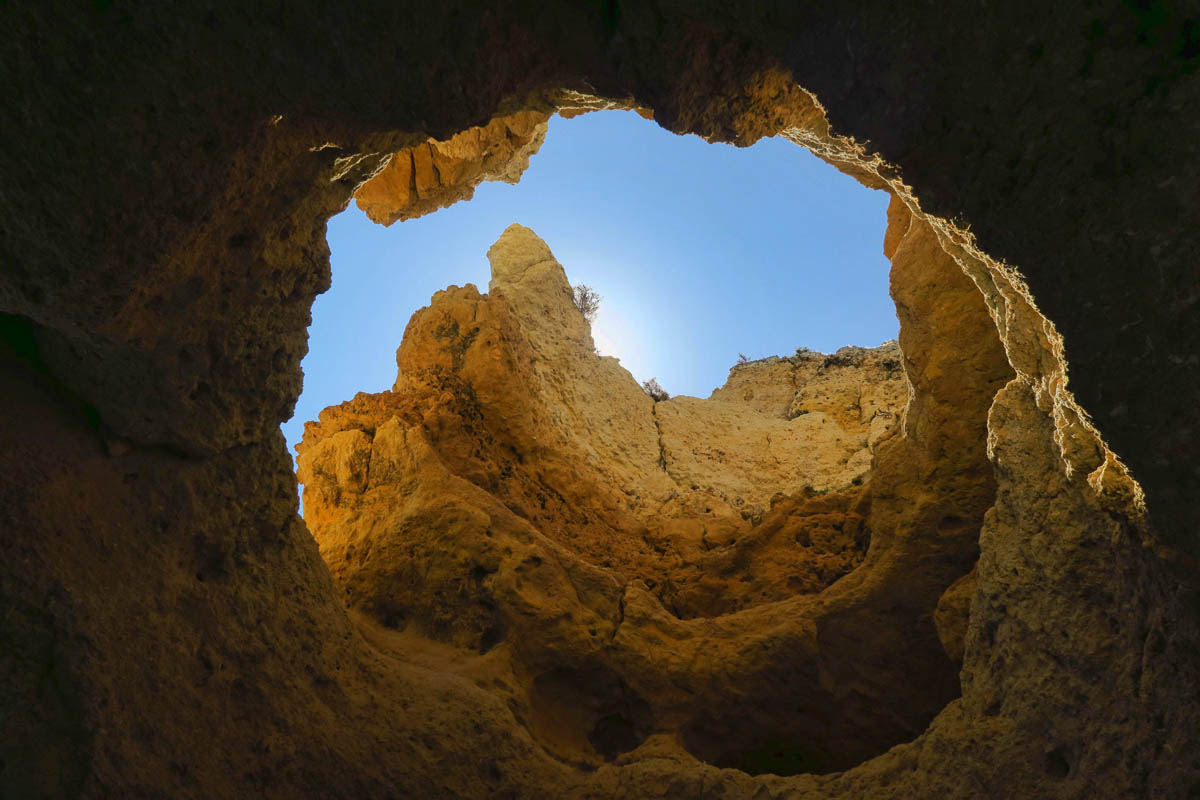 Lots of holes in the ceilings here in addition to Benagil.

My second boat tour of the day to the Grottoes is much closer to Lagos. In fact, the boat tour visits the same location I viewed from above while at the Ponte de Piedade stop on the Toy Train. It’s in a much slower, smaller boat with fewer people, so not only do I find it more relaxing than the Benagil boat tour, I also find it more scenic. Half the distance at half the price, but twice the enjoyment. 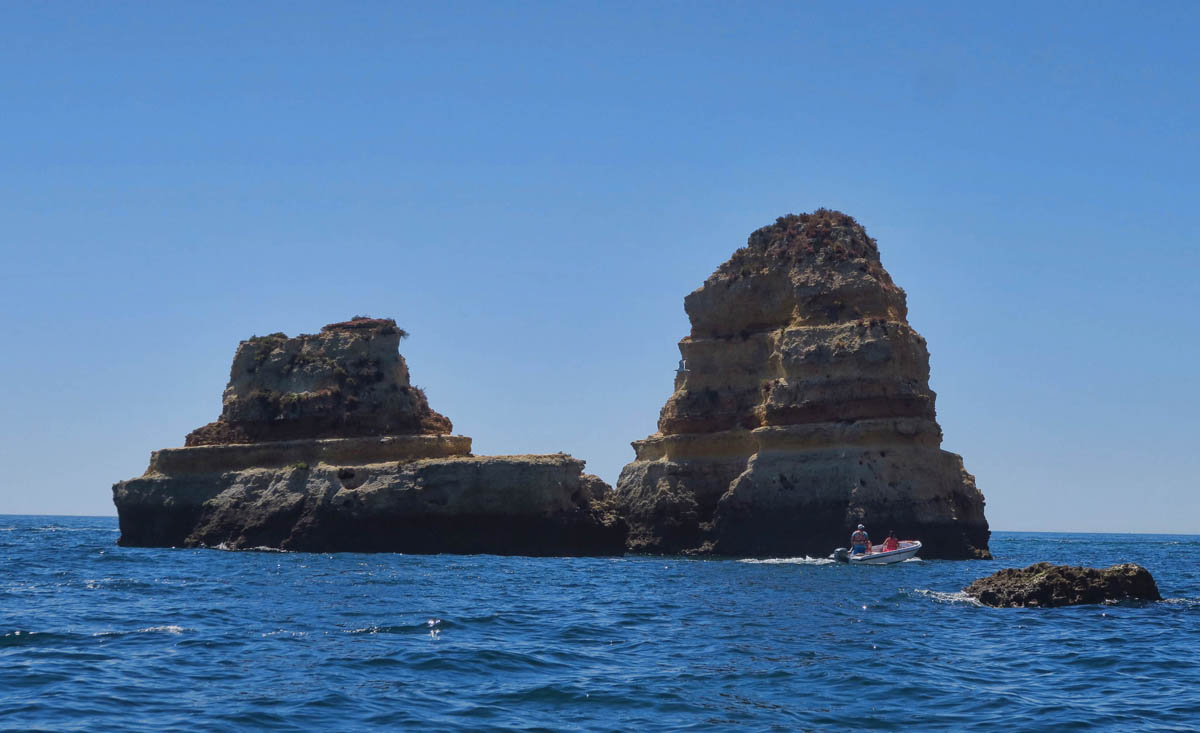 Along the way, we pass “The Titanic (left) and its Iceberg.” 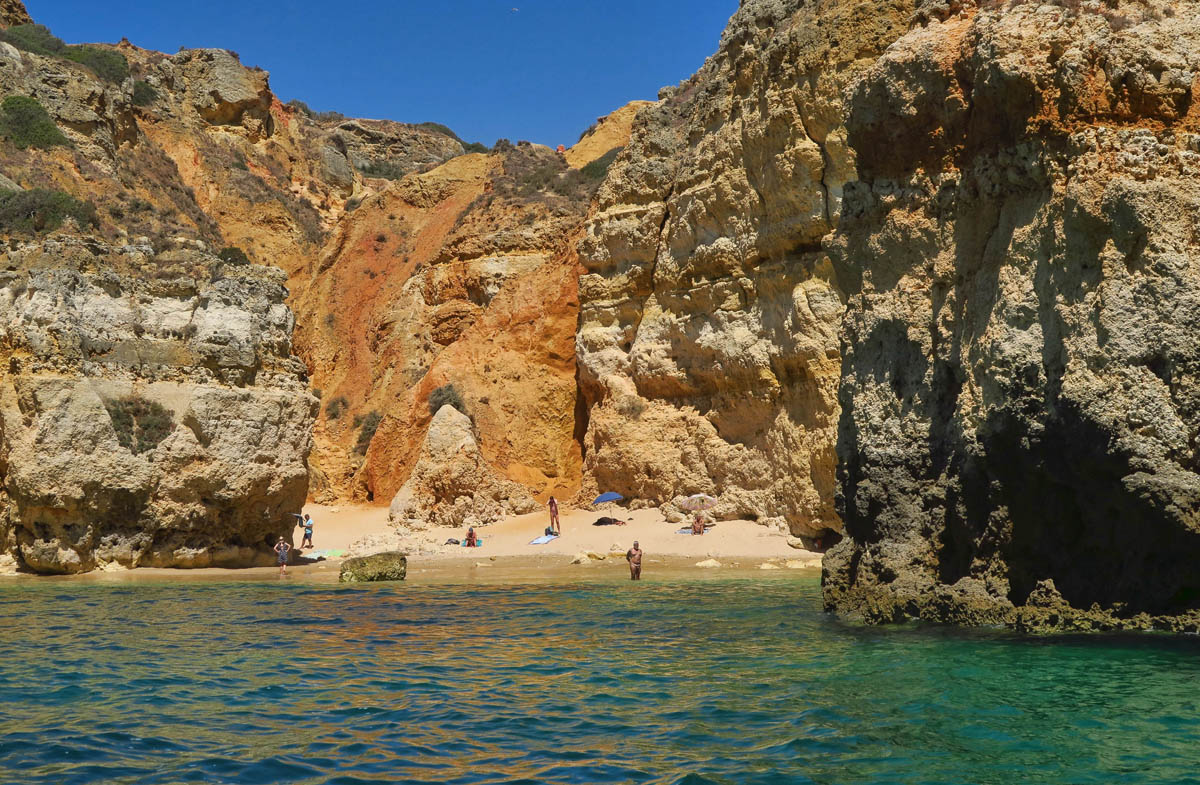 And a “clothing optional” beach! No zooming in, now! 😉 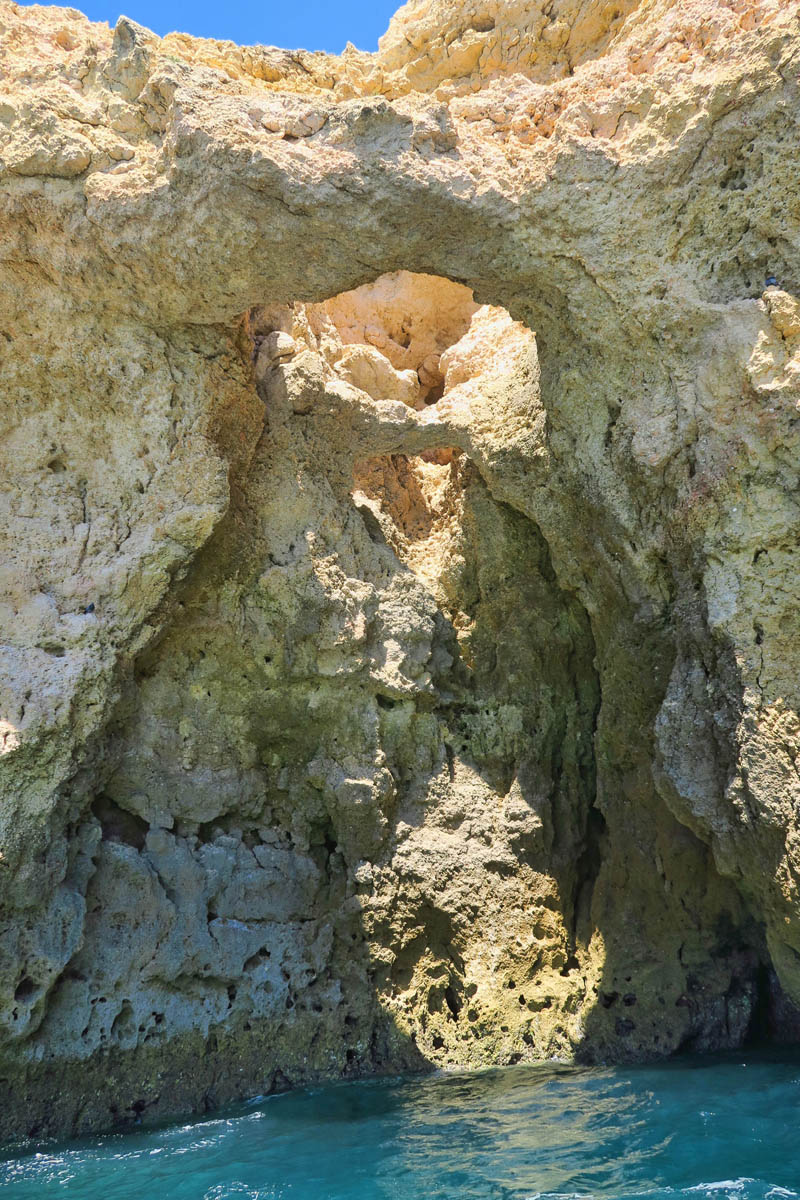 This feature was called “Lover’s Leap.” Supposedly there are seven arches in here, but I only spotted four. 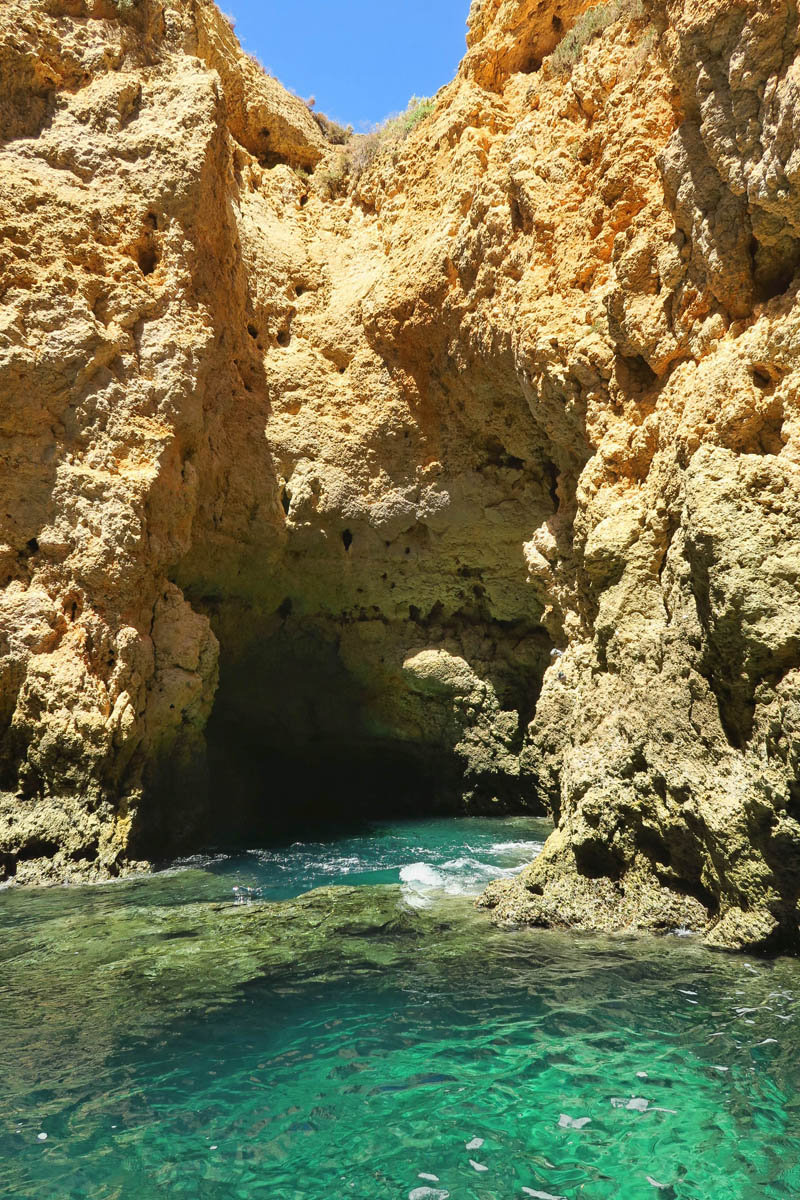 The water is extremely clear. 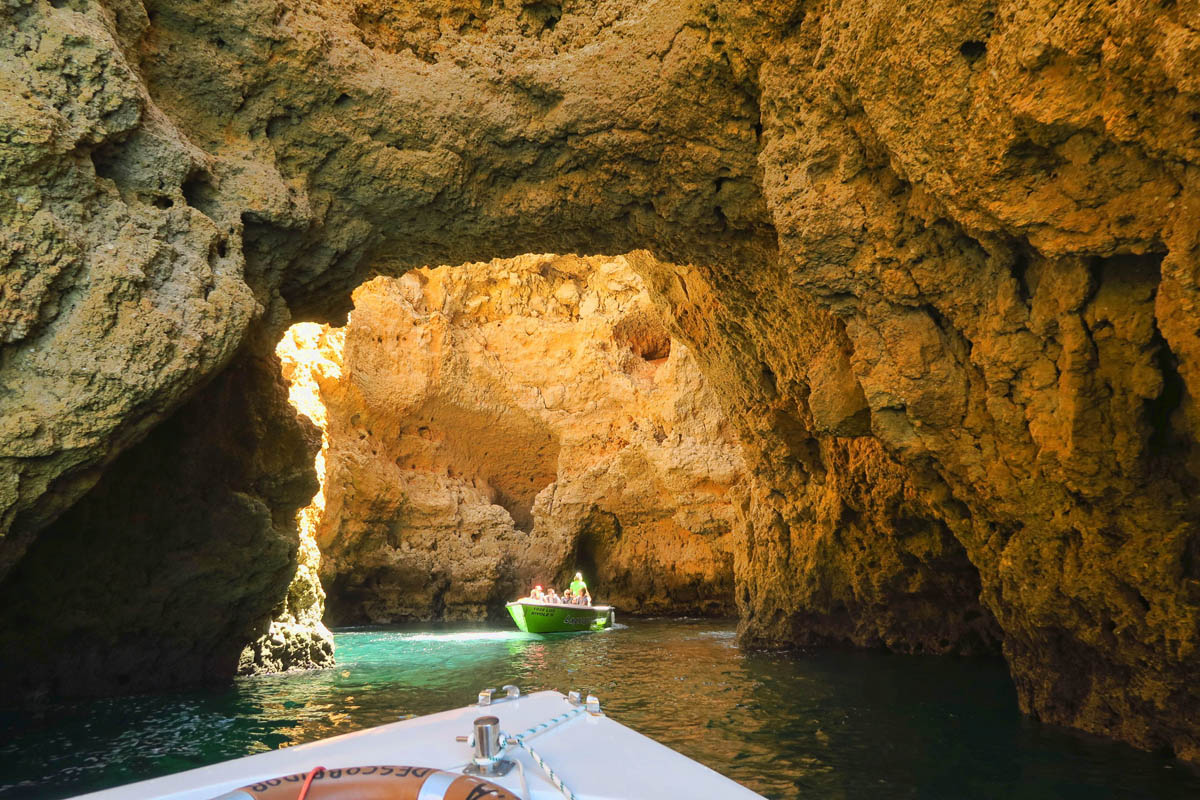 There are no speed boats through these caves, which makes it more relaxing.

While I enjoyed the boat tour along the coastline, I didn’t see any beaches I liked as well as my own “Goldilocks” of a beach, Meia Praia. It’s long, wide, and made up of the softest, cool sugary sand that absolutely doesn’t stick. If you are a beachgoer and one who loves to have your feet in the sand like I do, you know what a treat this is!

While Meia Praia is accessible from the toy train, it’s less than two miles walk each way from my guesthouse, so it’s a nice spot to take a picnic lunch or have lunch in one of the beach bars. Dining on the terrace of the beach bar was certainly a relaxing treat, but there was no substitute for taking my own bottle of Vinho Verde from the guesthouse fridge, along with some grapes, cheese and crackers for an evening picnic, ocean-side. (Side note: Vinho Verde translates to “green wine,” for which Portugal is well known. A better description is “young wine,” as it is produced 3-6 months after grapes have been harvested. Most varieties contain a slight “pétillance,” or effervescence making them my new refreshing summer beverage of choice while in Portugal.) 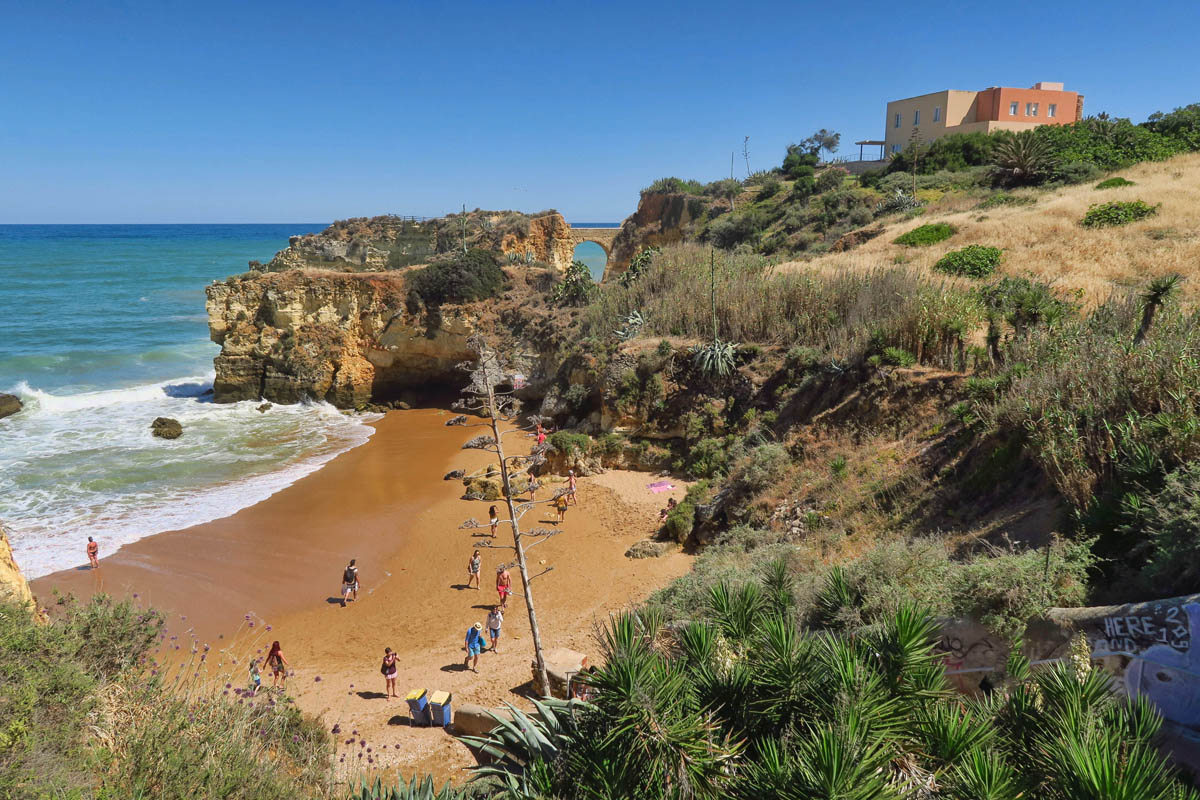 Praia do Pinhão, too small. 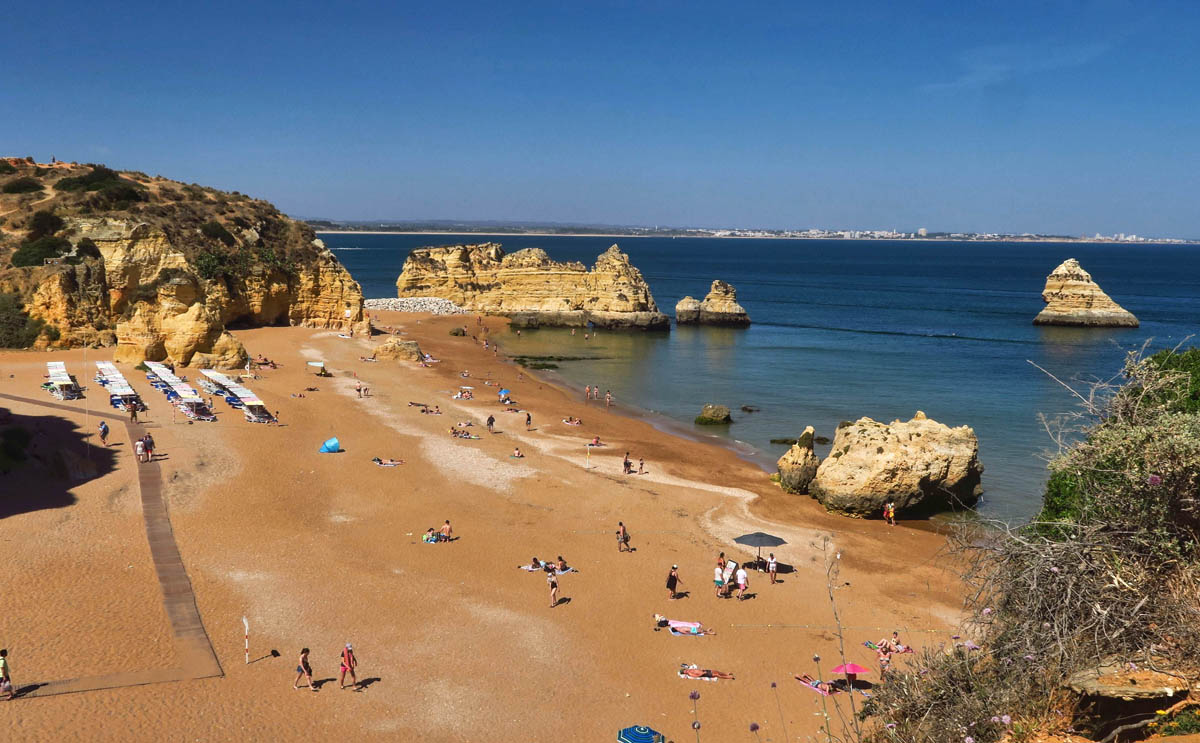 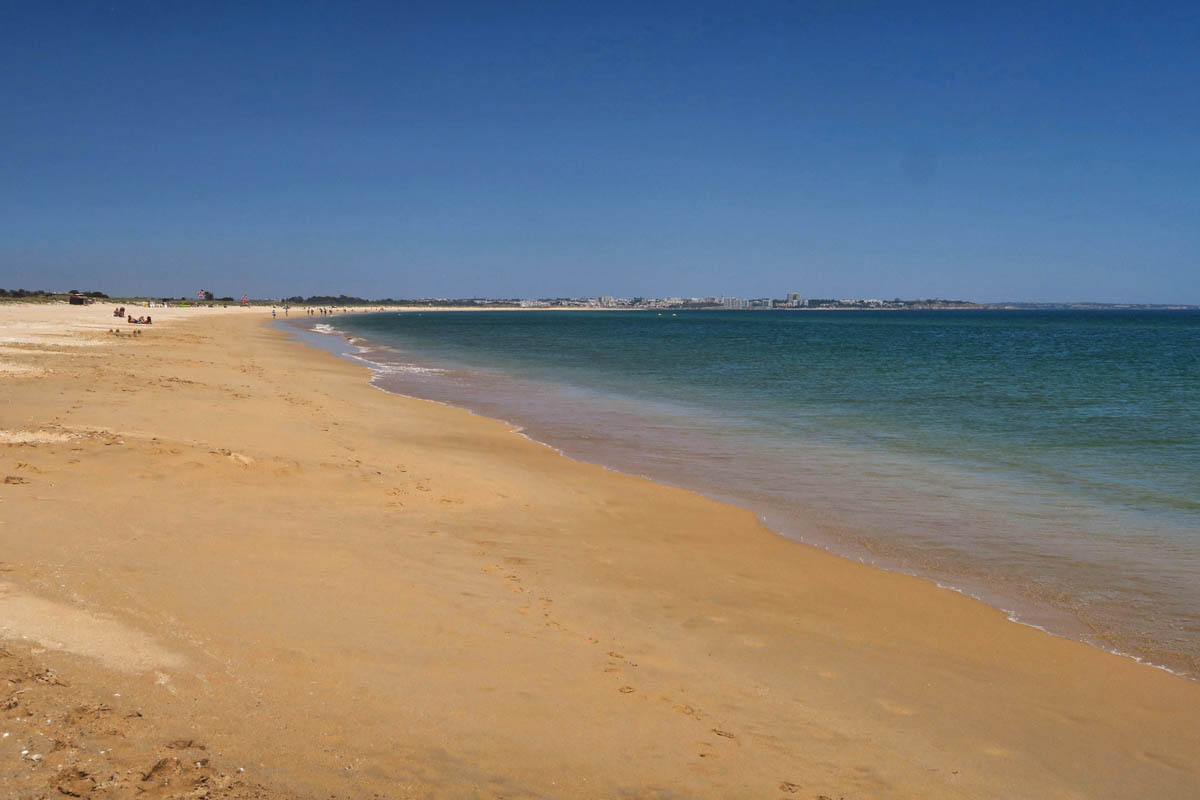 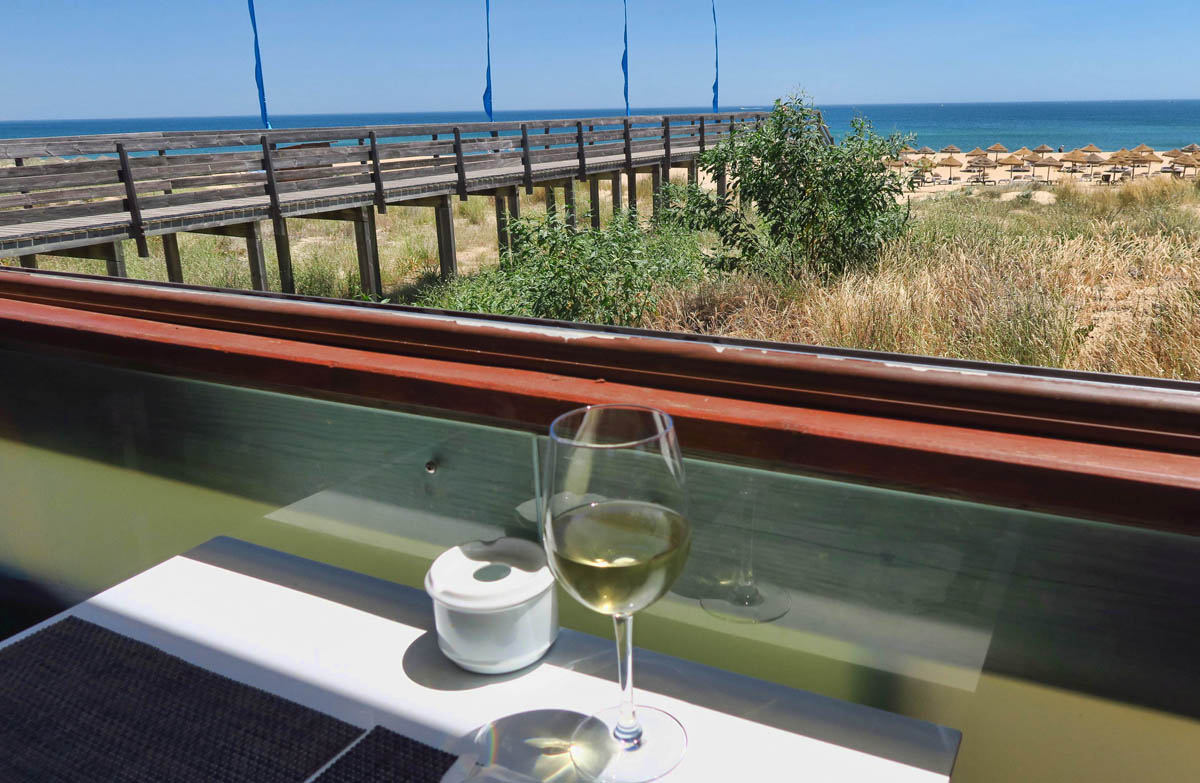 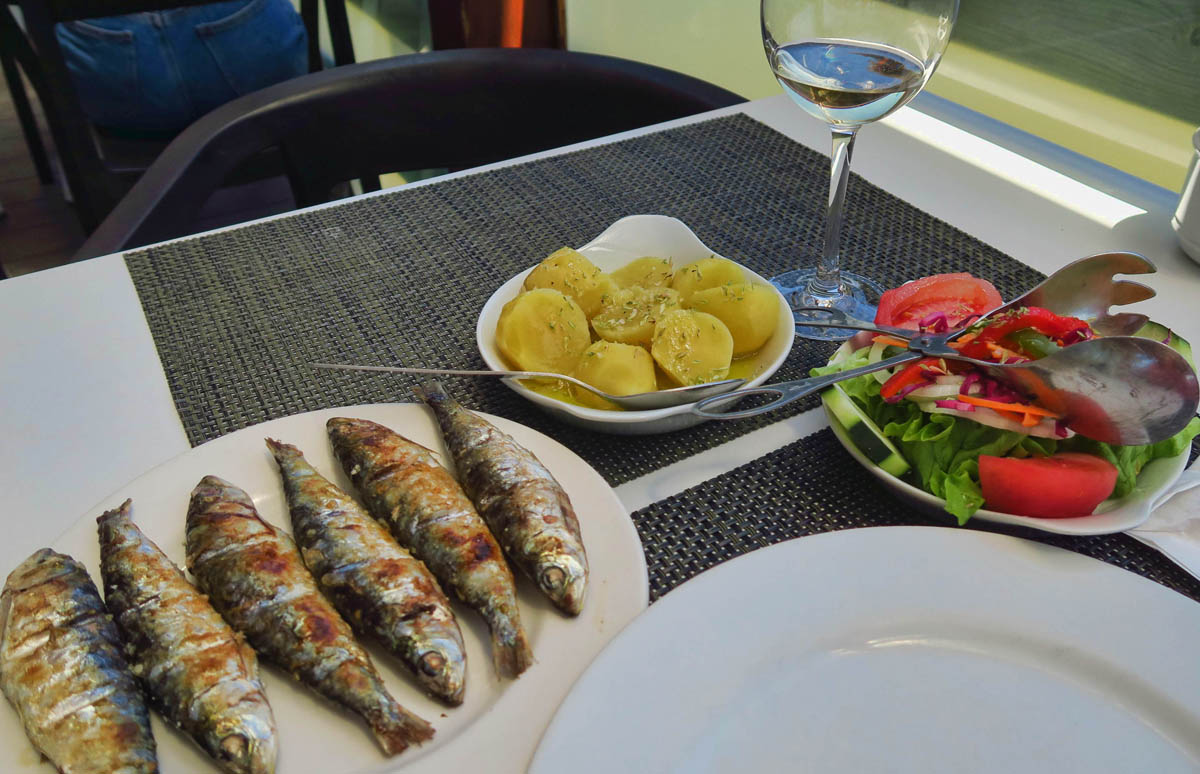 …to a full lunch of fresh sardines right off the grill. 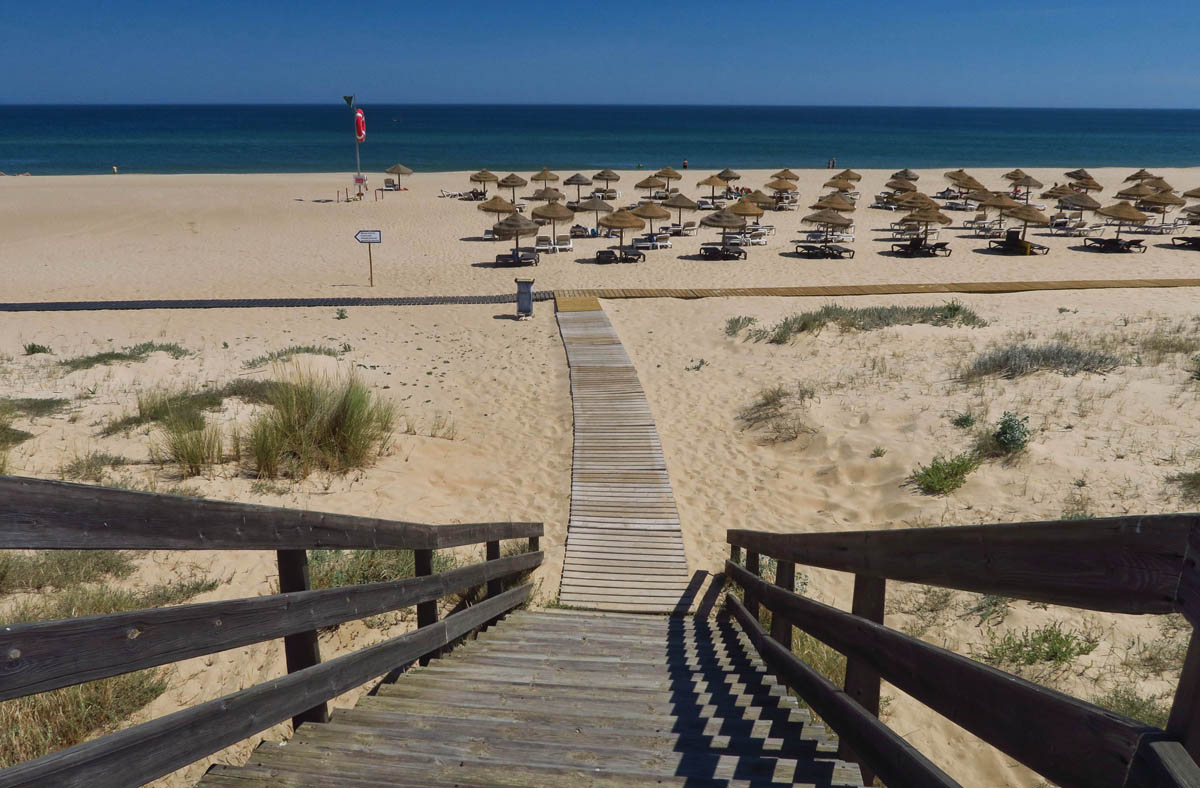 After lunch, step down to the boardwalk… 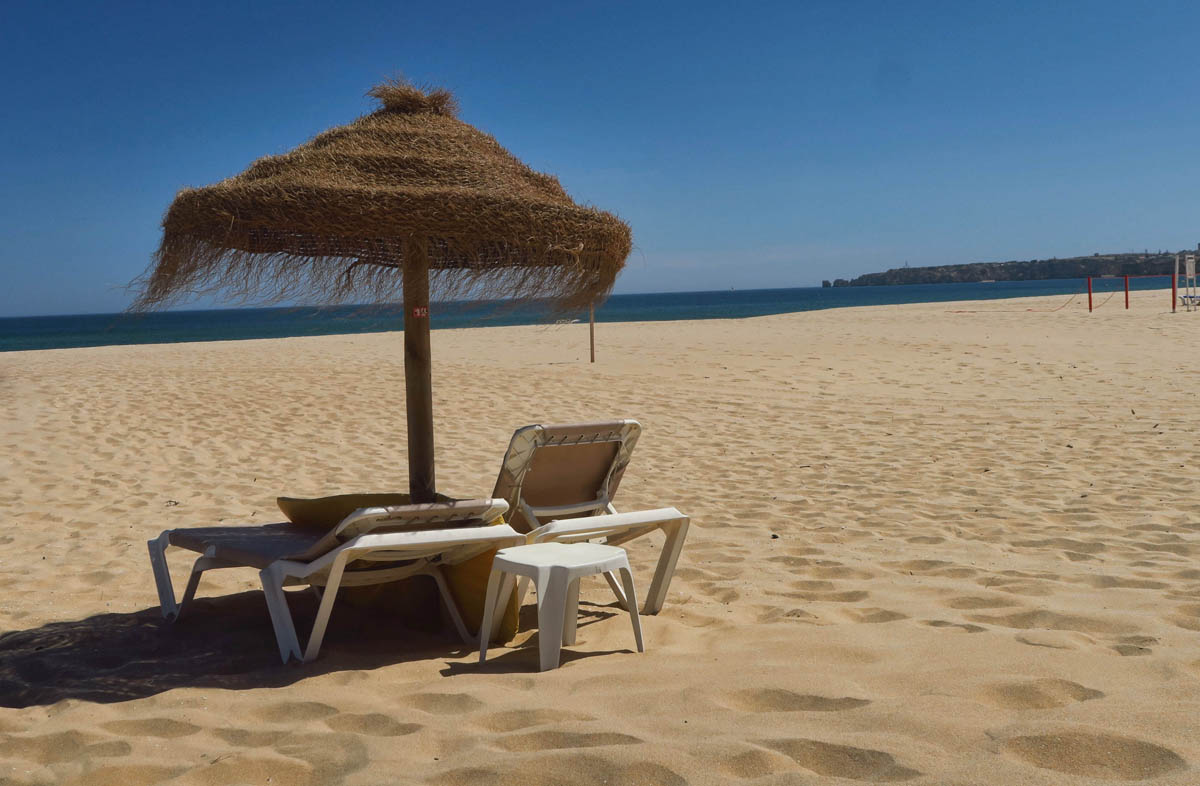 And pick a chair, any chair. 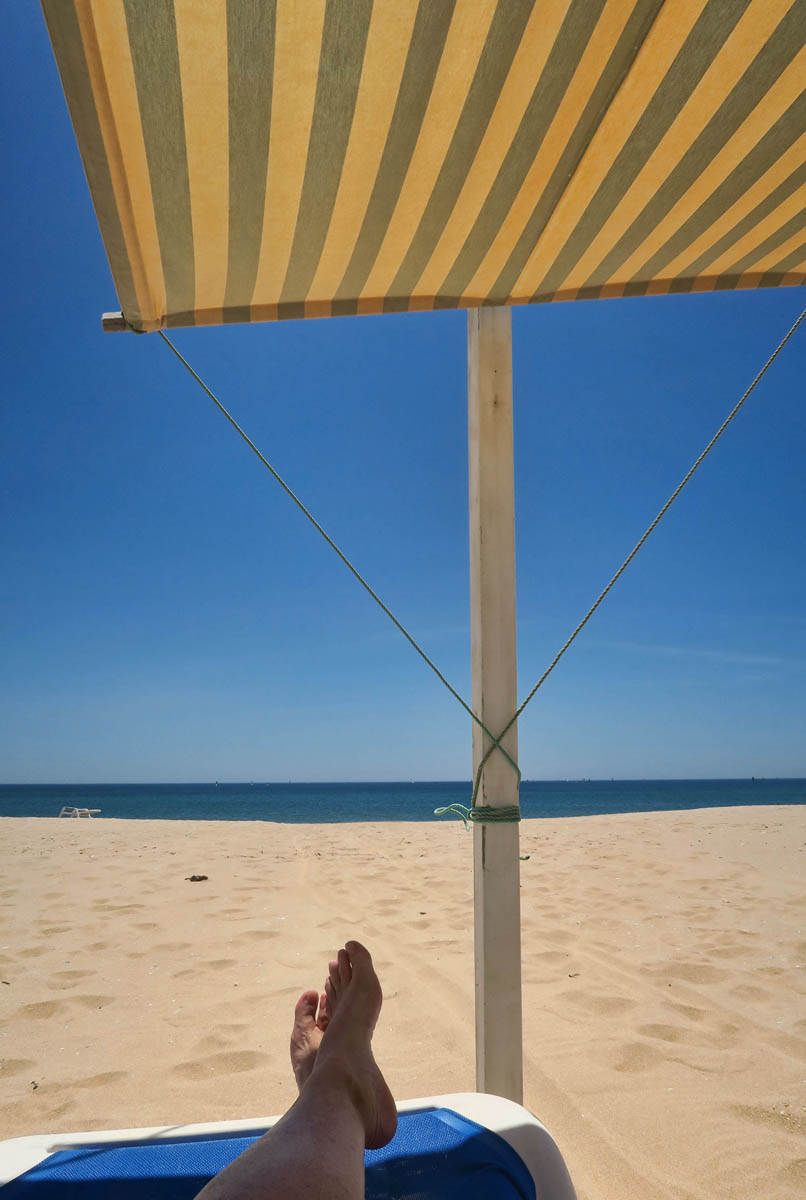 These were my favorite. Light and airy, but still provide ample shade. 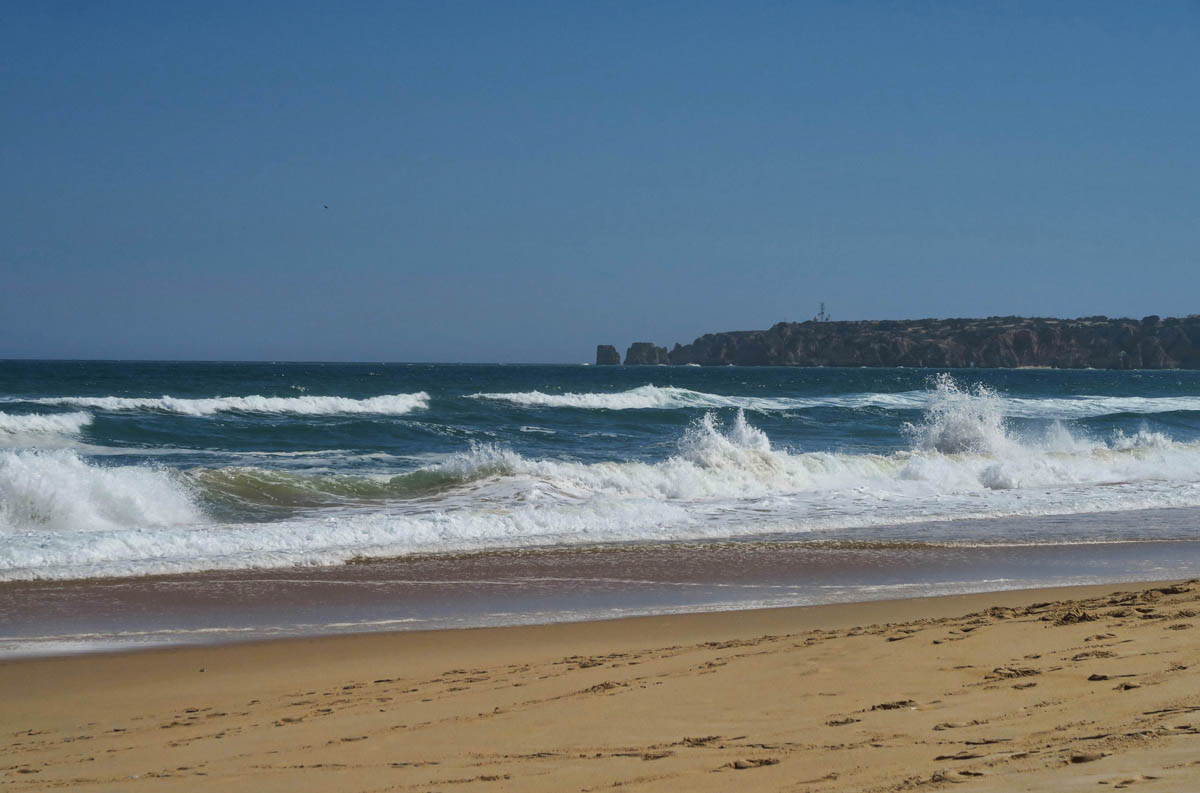 The surf was flat calm the day before. The big swell arrived right on queue!

Lagos ticks all the boxes for me from beautiful beaches, perfect weather, and a lively marina ambiance. The old town is full of interesting architecture, a variety of affordable restaurants, and nice grocery stores and markets without the “big box” madness. Whenever I visit a place, I always ask myself, “Could I live here?” When it comes to Lagos, I ask myself, “How could I leave?”

But I only saw it for ten days. Being on Lagos on the cusp of high season worked in my favor. Upon arrival, my guesthouse was only €21 per night, the beaches were deserted with no one in site, and beach chairs were free for the squatting. But by the time I left, the rental kiosk was open and charging €12 for a beach chair. The price of “my” guesthouse has now gone up to high season rates of €60 on booking.com. And photos on the internet make the beaches look like a crazy quilt of beach blankets.

“C’est la vie”, say the old folks, it goes to show you never can tell. 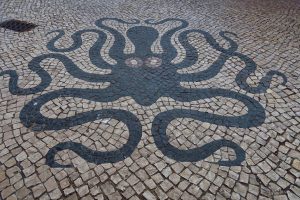 Even the sidewalk art in Lagos has an ocean theme. 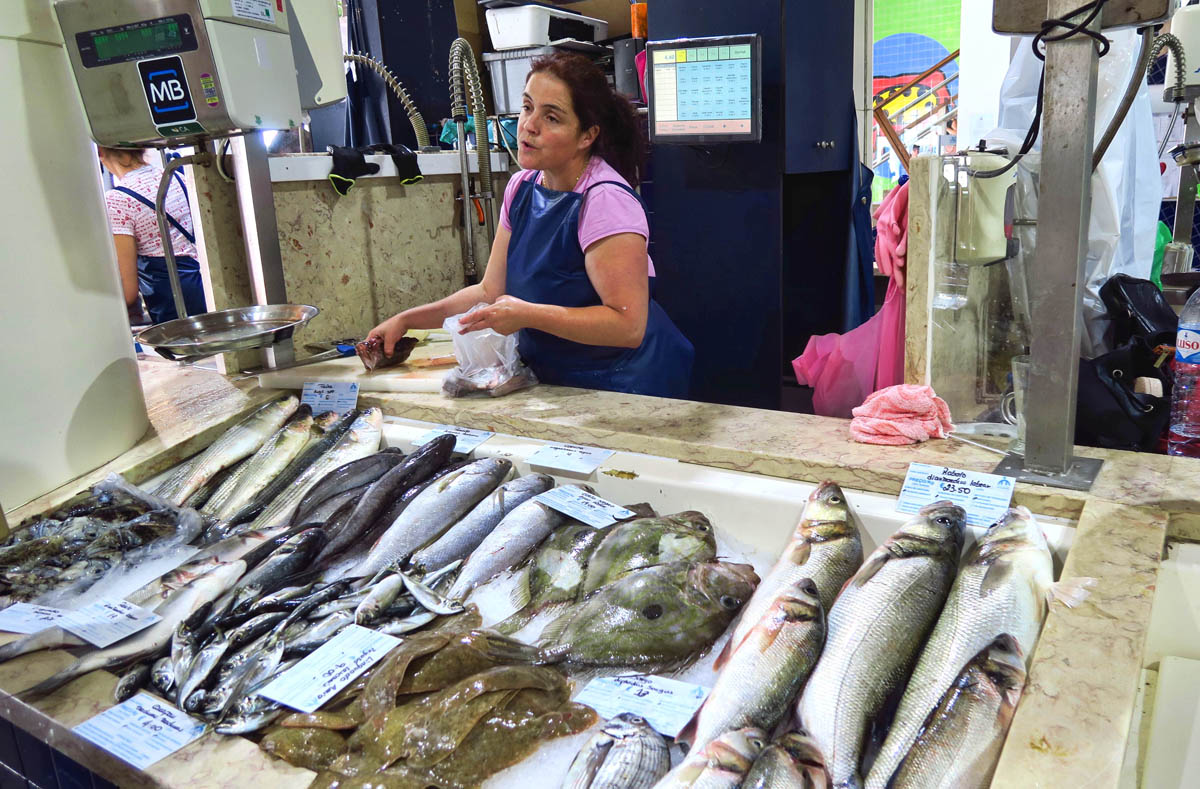 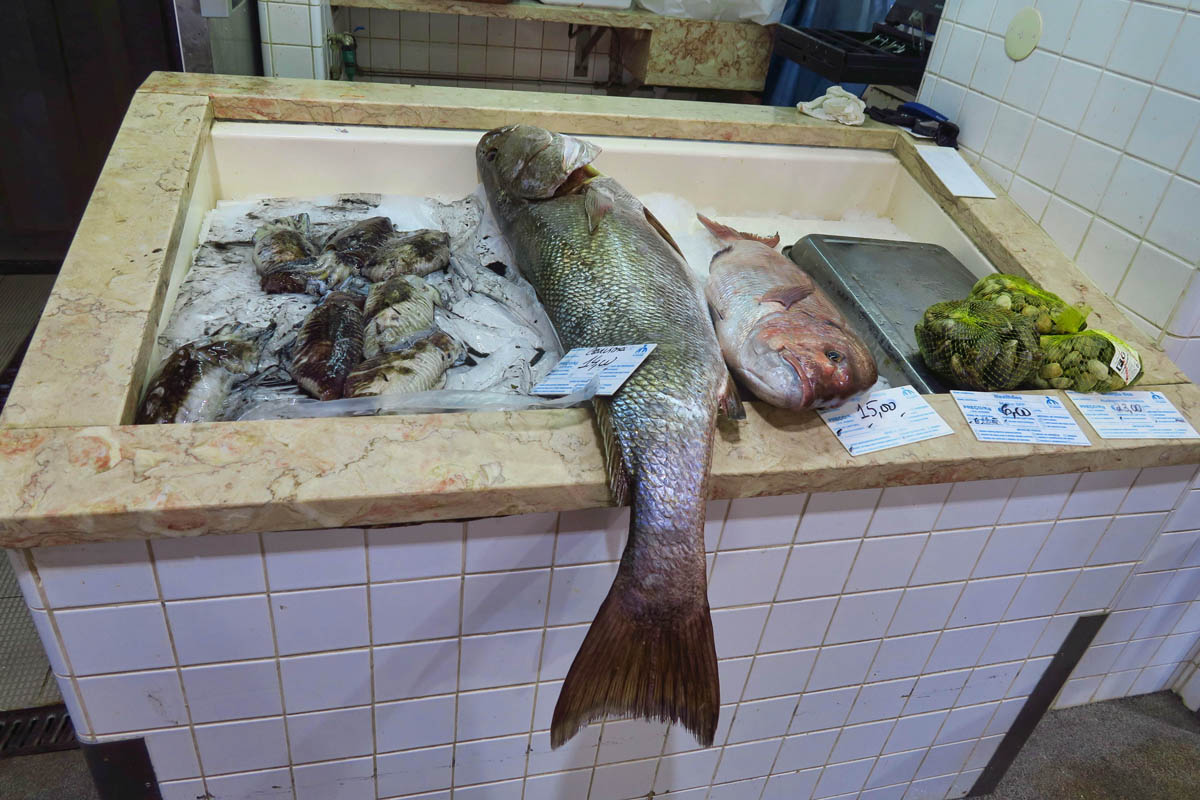 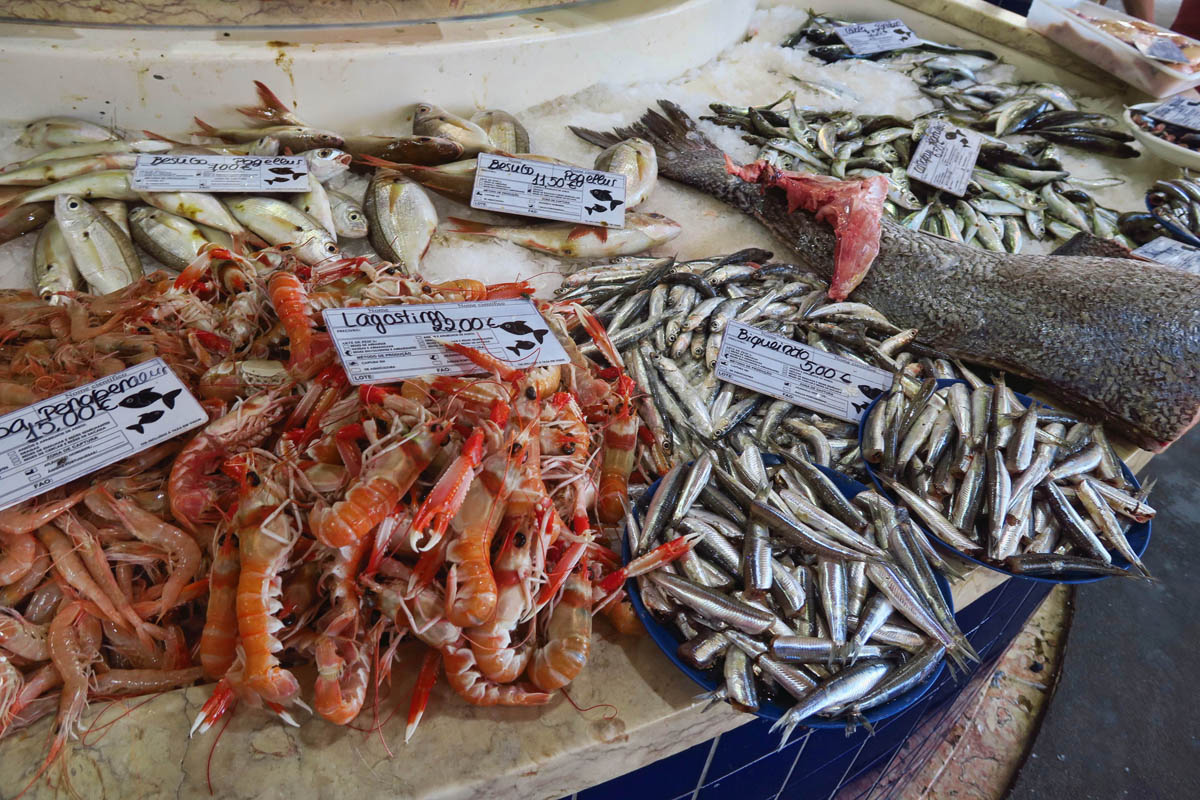