There is yet another reason why I want to wait out the weather in Obidos. I want to go from one day trip destination (Obidos) to another. I want to visit Berlengas Islands.

As often happens, I end up sidetracked to a new, unplanned destination that I didn’t even know existed while researching my planned destination. Such was the case with Berlengas. This is why I don’t worry that one day the “bucket list” will be empty!  While visiting the Tourism Office in Obidos to inquire about onward bus schedules for my northbound journey, there hanging on the wall is a giant poster of the Reserva Natural  das Berlengas. I had no idea where it was or how I could get there, but standing in the Tourism office, I was in the perfect place to find out.

The Berlinga Archipelago, or Reserva Natural das Berlengas, is a UNESCO World Biosphere Reserve. Berlenga Grande, largest of the Berlengas Islands, is an easy day trip from Obidos, just six miles from the little fishing village of Peniche, a town worthy of a visit in its own right. Ferries leave for the islands in the morning, returning in late afternoon. It would require a change of buses to get to Peniche from Obidos (nonstop from Lisbon,) but scheduling was favorable to easily get there and back within a day. The only obstacle would be the weather. The woman behind the desk at the tourism office cautions, “It’s quite exposed, with few places to escape the elements. Weather will determine whether you have a good day or a bad day!” 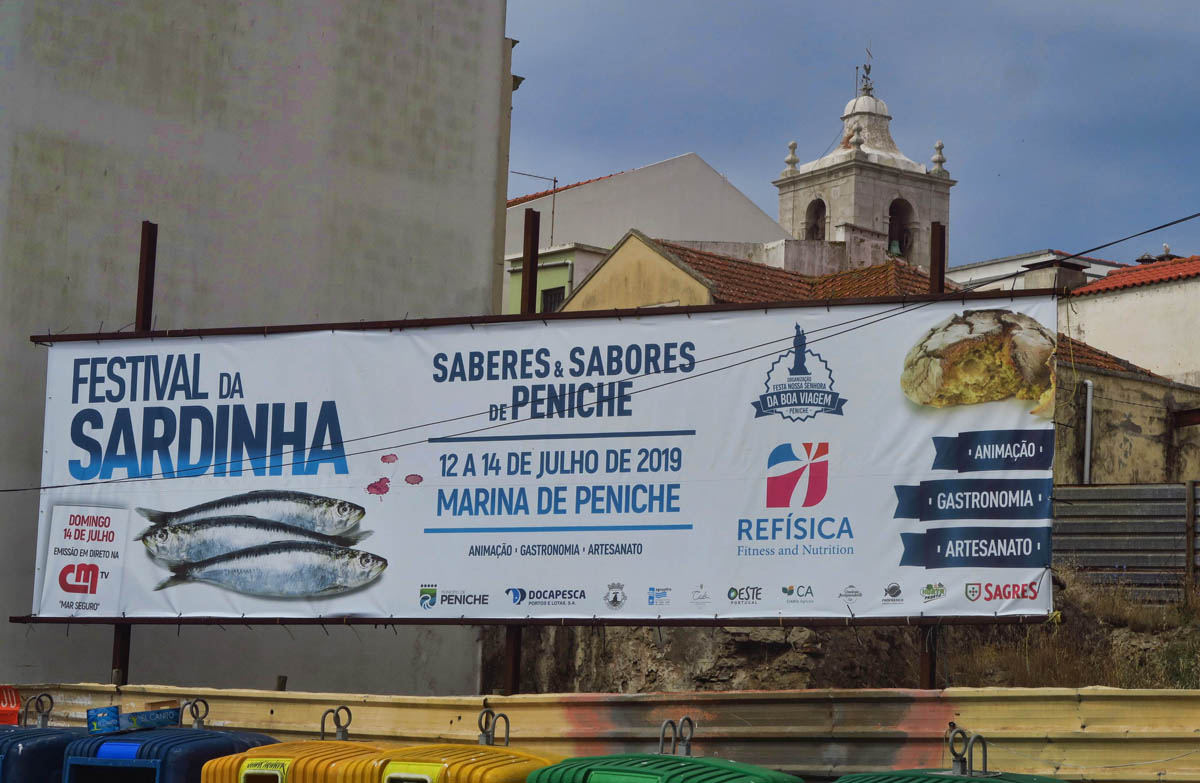 Peniche is a fishing community, celebrating with a “Festival of Sardines.” 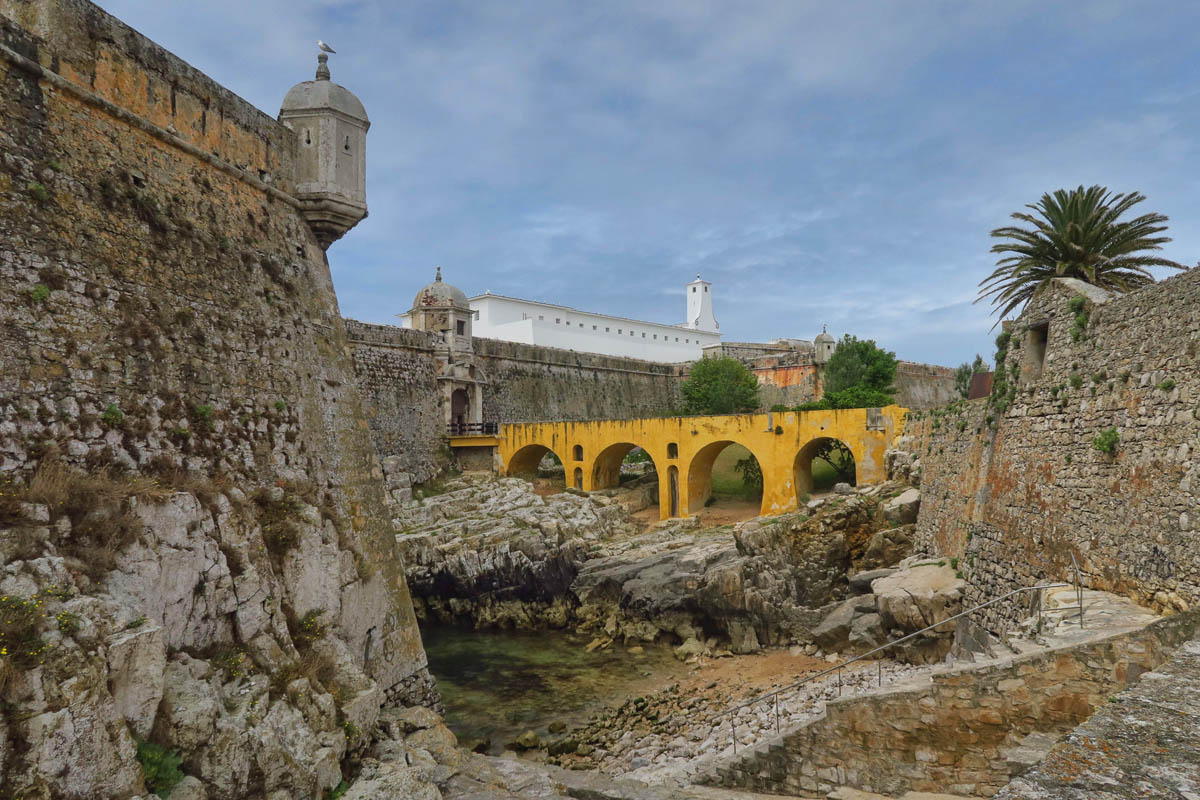 Like most Portuguese coastal towns, Peniche has a beautiful fortress along its coastline. 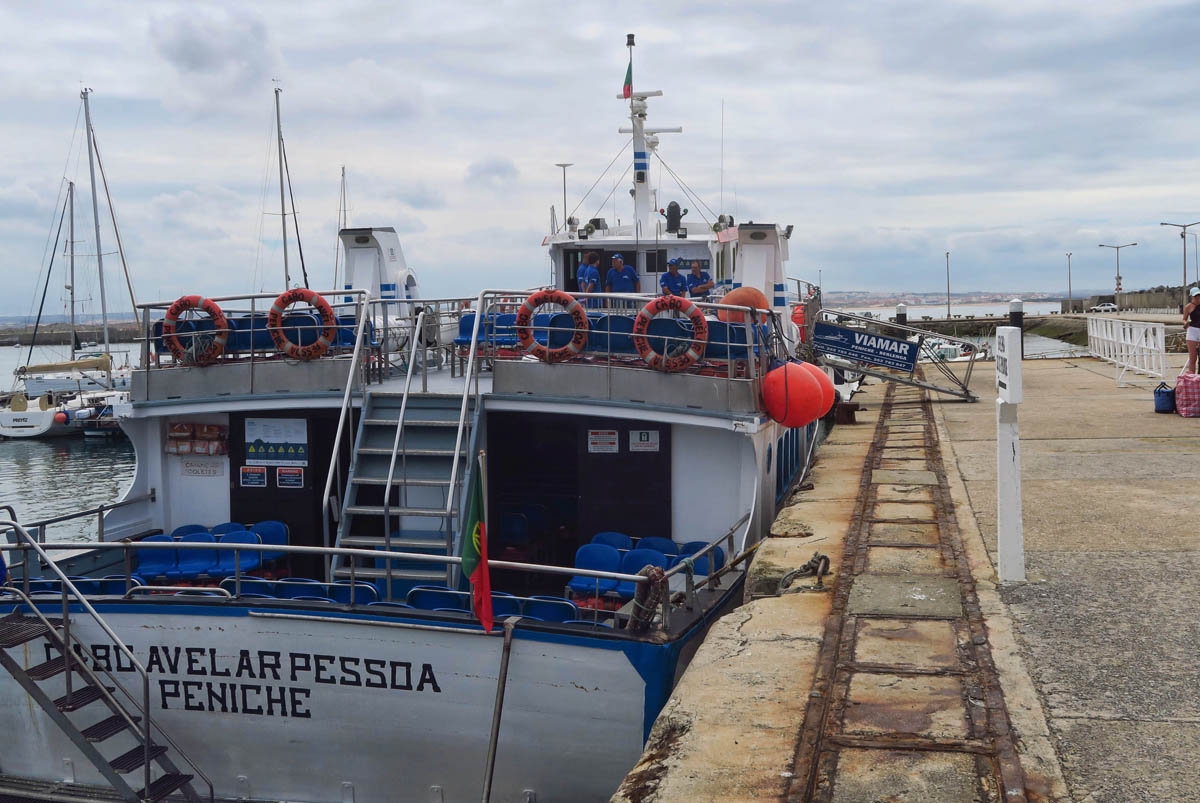 There are some “fast boat” options to Berlengas Islands, but I prebooked the larger ferry online in hopes of having a smoother ride. 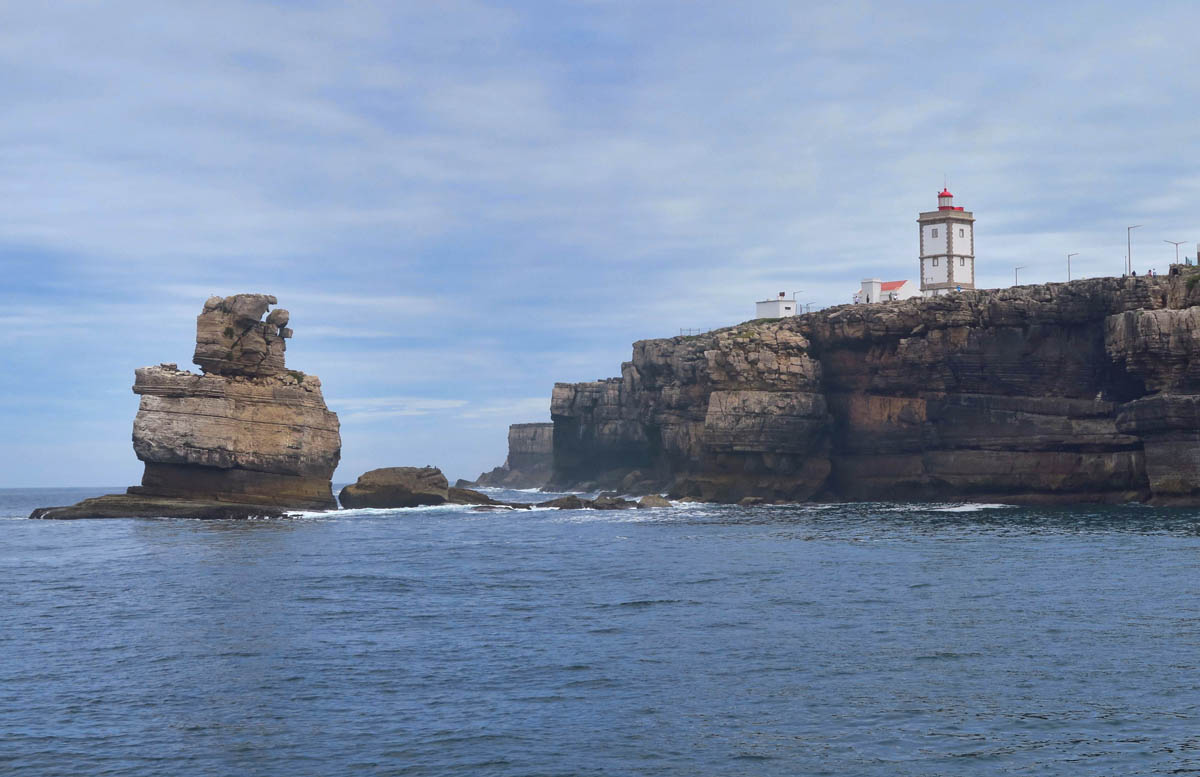 Leaving Peniche, we pass Lighthouse of Cabo Carvoeiro, located along the mainland coast. 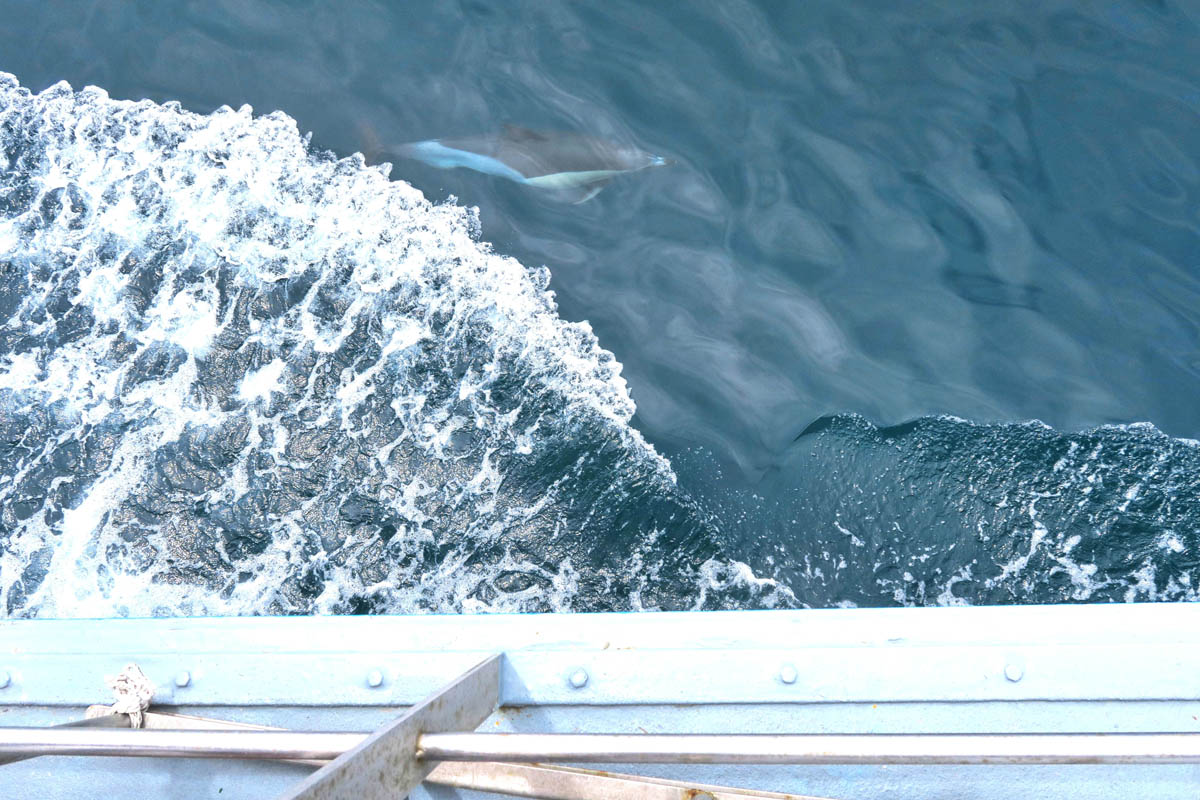 Note dolphin escort in upper section of photo. There were half a dozen of them, but I couldn’t get them to stay still long enough for a group photo. 😉

It’s a 45-minute ferry ride to Berlenga Grande, the only inhabited island in the archipelago. The other islands are more like “islets,” a series of rocky outcroppings with little to no egress. Not being sure of the availability or cost of concessions on the island, I pack a lunch with the plan to enjoy it at the beautiful fort I saw on the poster back in the Tourist Office.

While the sea appears to be quite calm on the day I visit, it’s still a bit disconcerting as the boat crew distributes “barf bags.” (Fortunately, mine only found use as a garbage bag later for my apple core left over from lunch.) It’s a relatively calm ride over, and we are escorted by a few dolphins along the way. 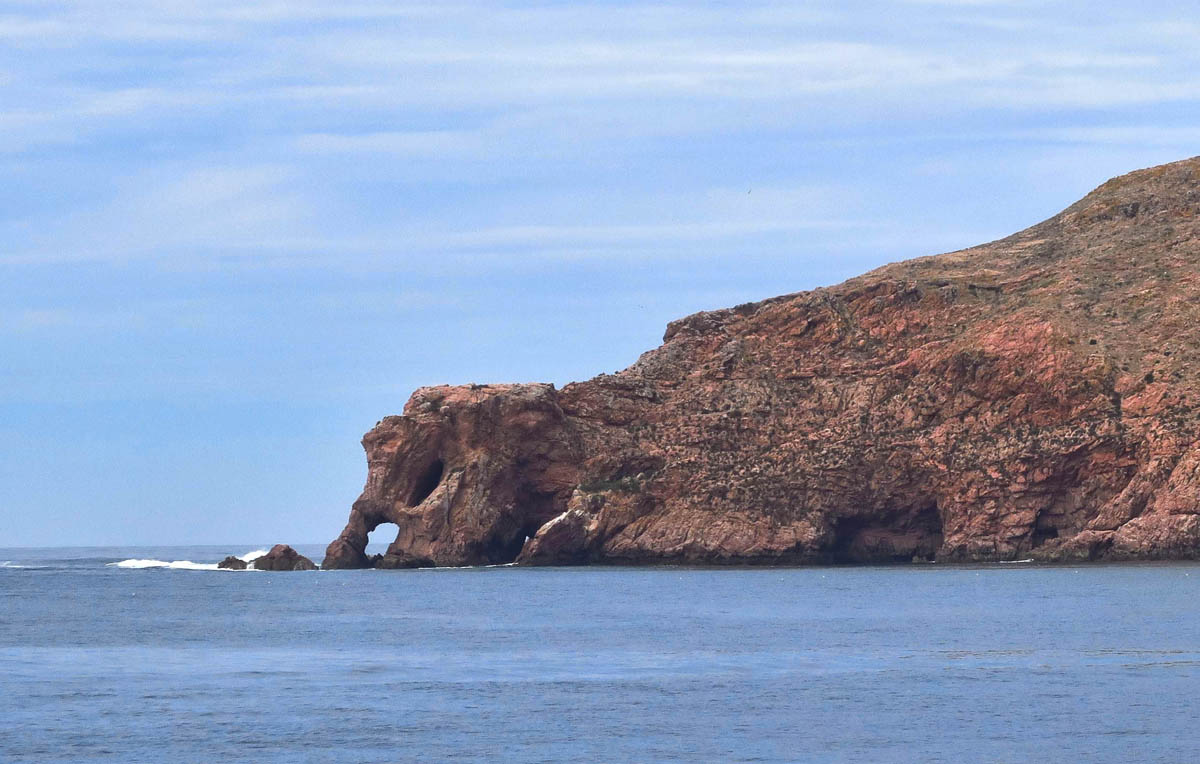 Approaching Berlengas Grande, we can see the “elephant” along the coastline. 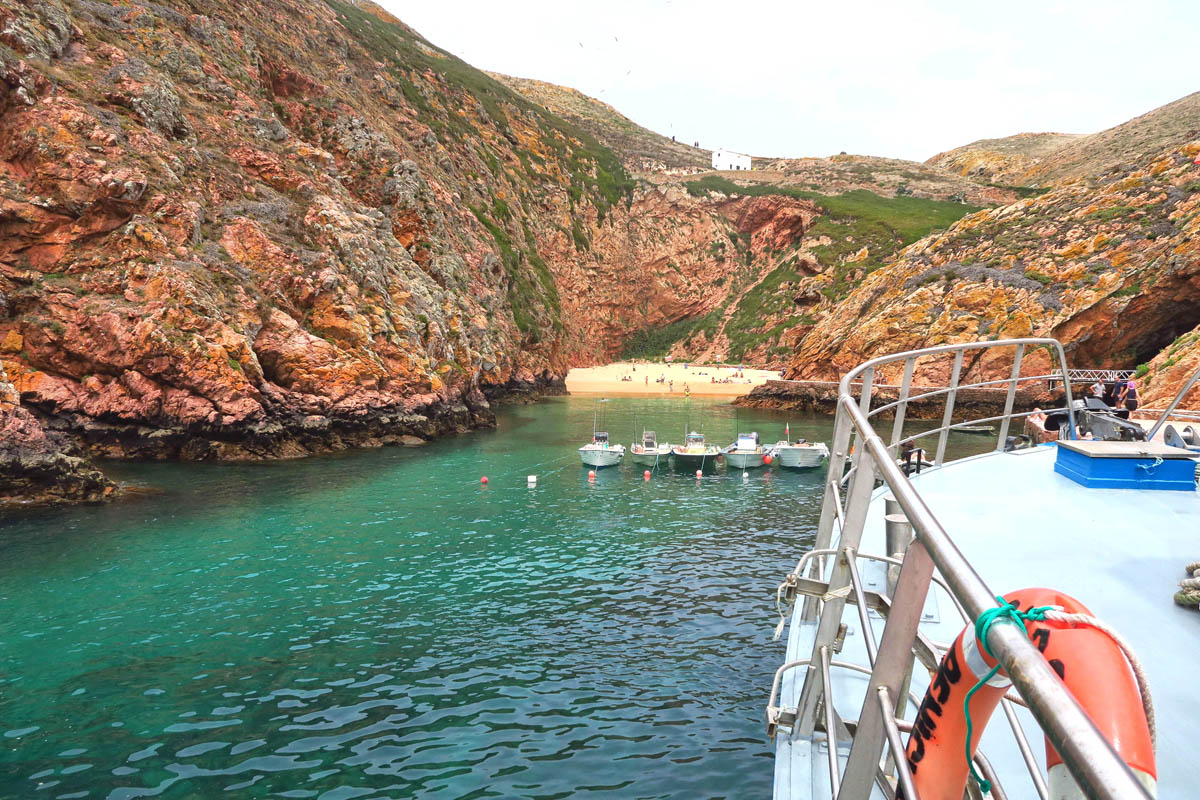 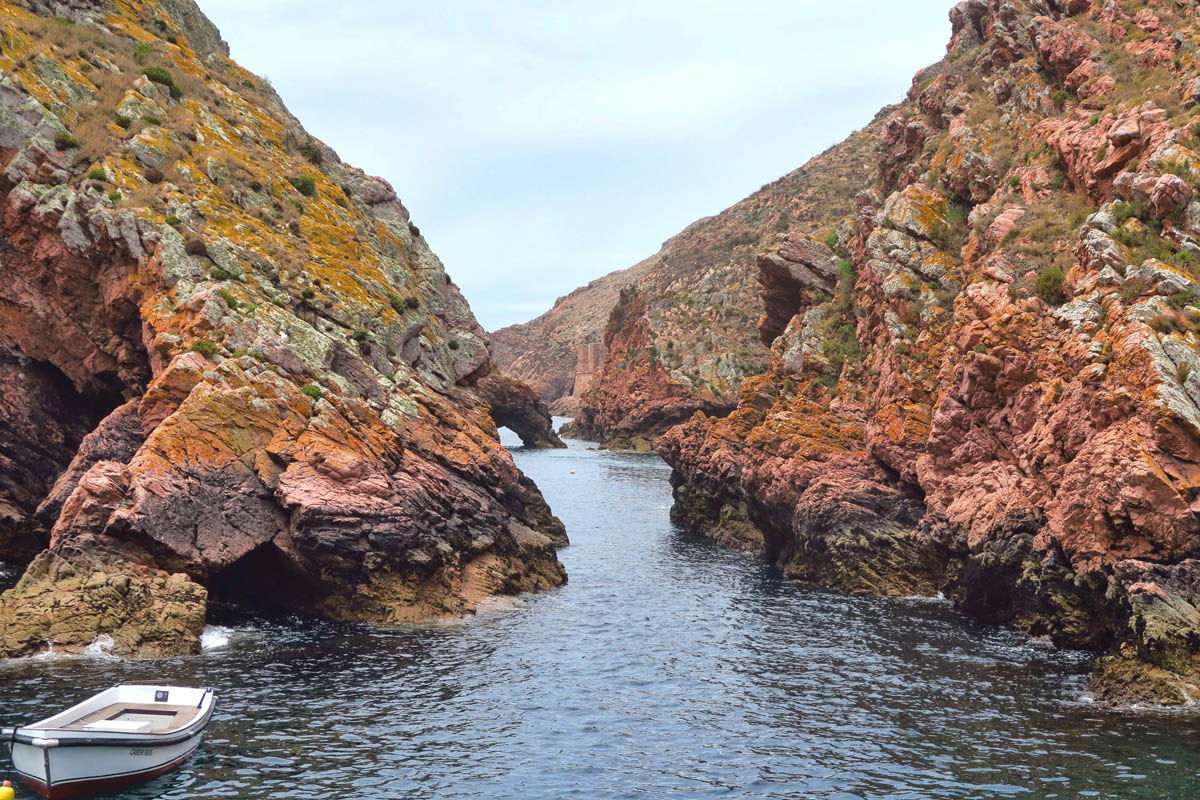 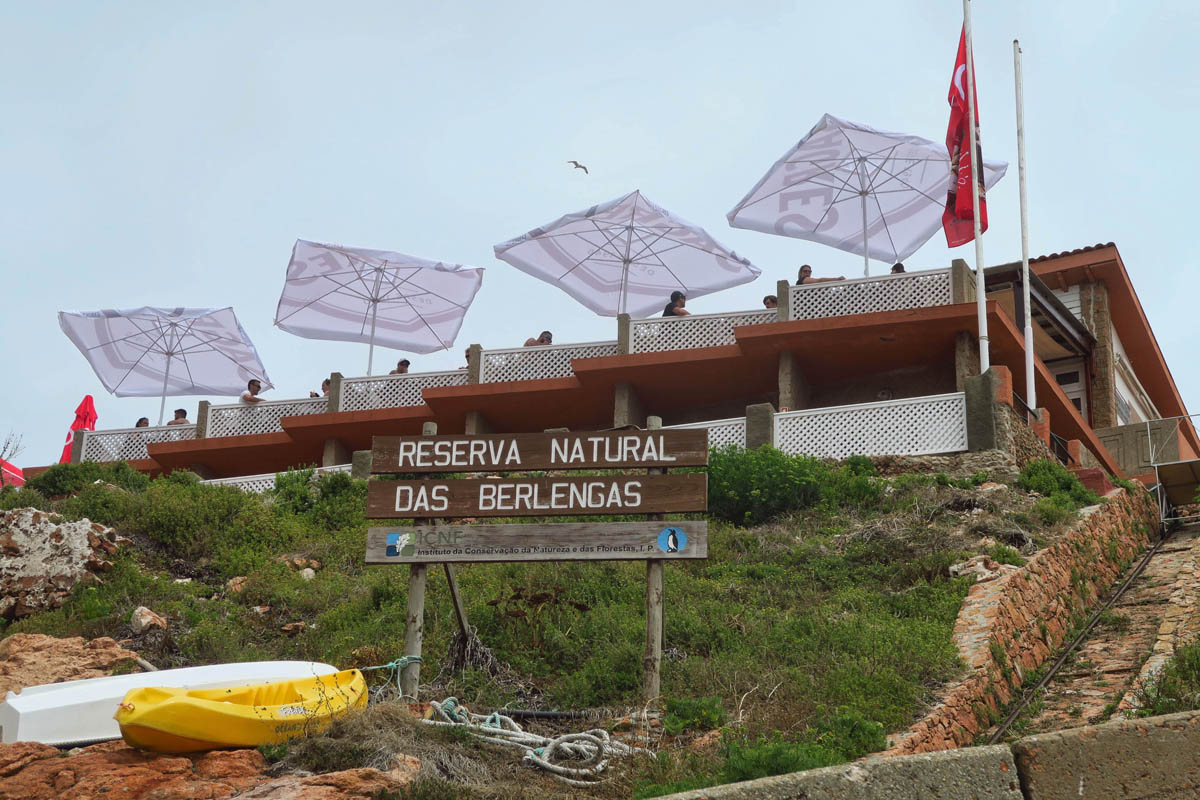 The island and surrounding waters are a nature reserve. 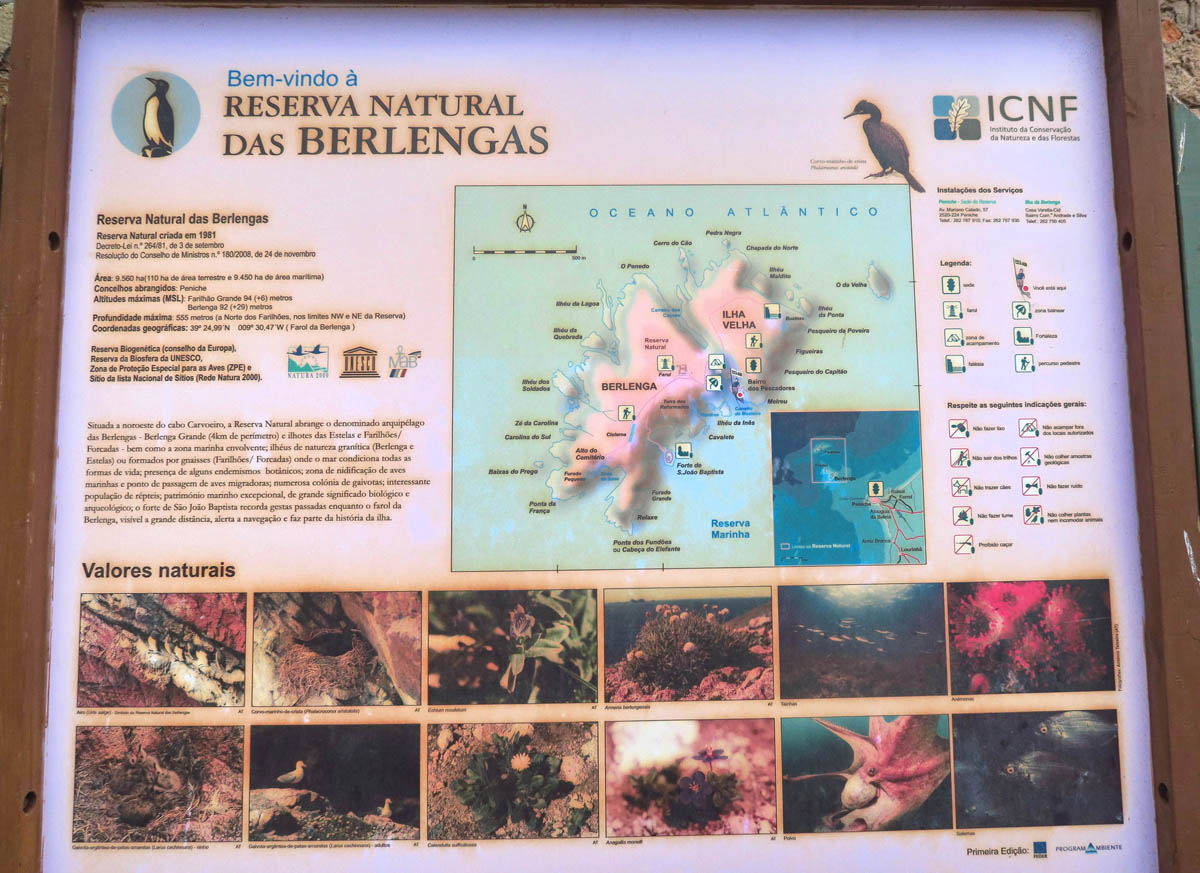 Not only was I intrigued by the poster of the shimmering blue water taken in full sun, there was another reason I was eager to visit Berlengas Islands. Like all wild and wonderful seaside locations, there is a lighthouse there. Farol da Berlenga, or Duke Of Braganca Lighthouse as it is called by the locals, was built in 1842. It once housed one of the few “hyper-radiant” Fresnel lenses, largest “order” of the prism lenses. I had just seen a panel from this lens during my visit to the Santa Marta Lighthouse Museum back in Cascais.

While the lighthouse is beautiful in its stature standing as sentinel to warn mariners of the rocky crags below, like most of the lighthouses in Portugal, tourists can’t get too close. In fact, there is a sign at the gate that I can make out with my limited Portuguese to read “Ministry of National Defense,” so I don’t tarry too long, continuing my hike on toward the São João Baptista Fort. 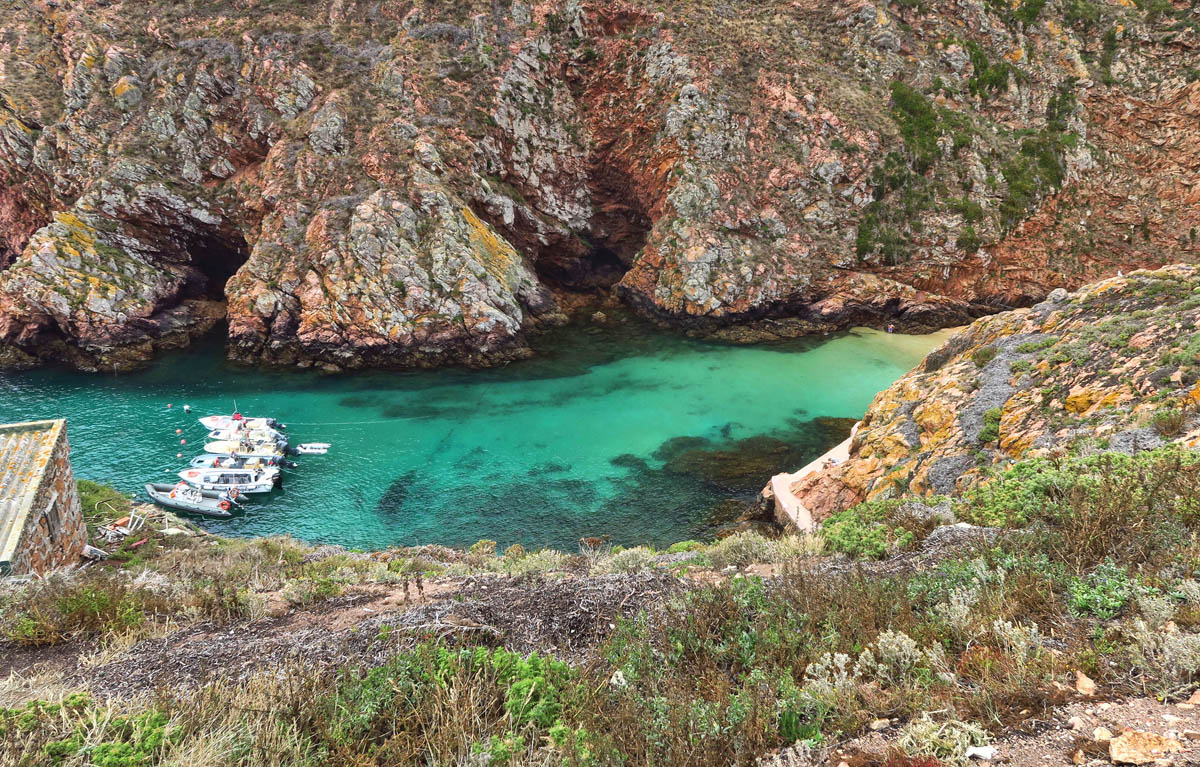 Looking down from the climb to the top of the island 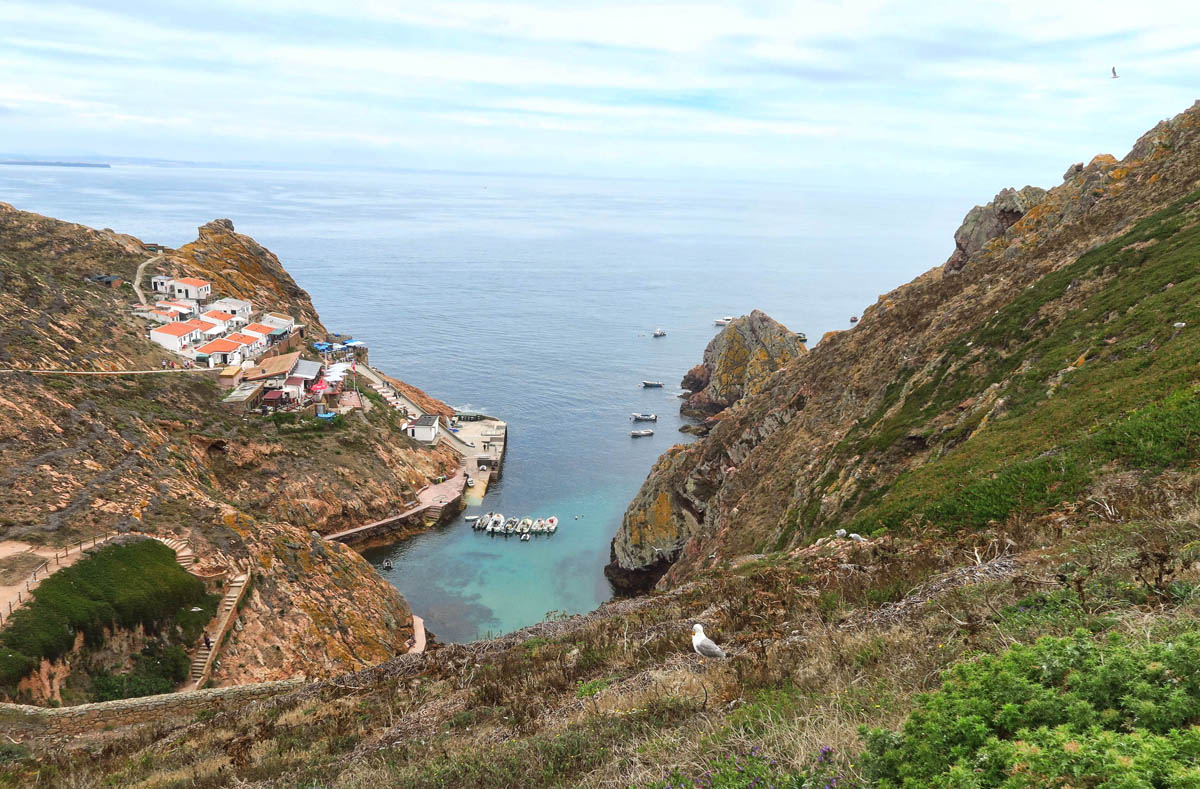 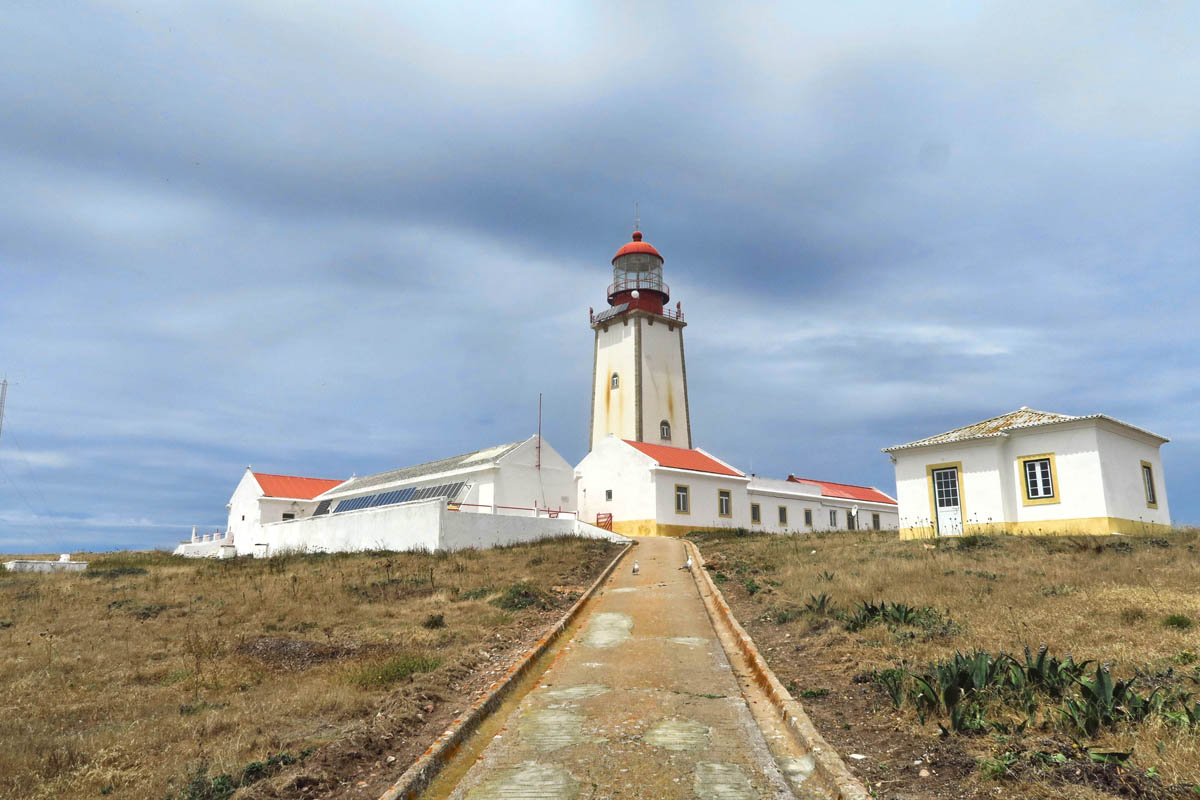 Berlenga lighthouse, also known as the Duke of Bragança Lighthouse 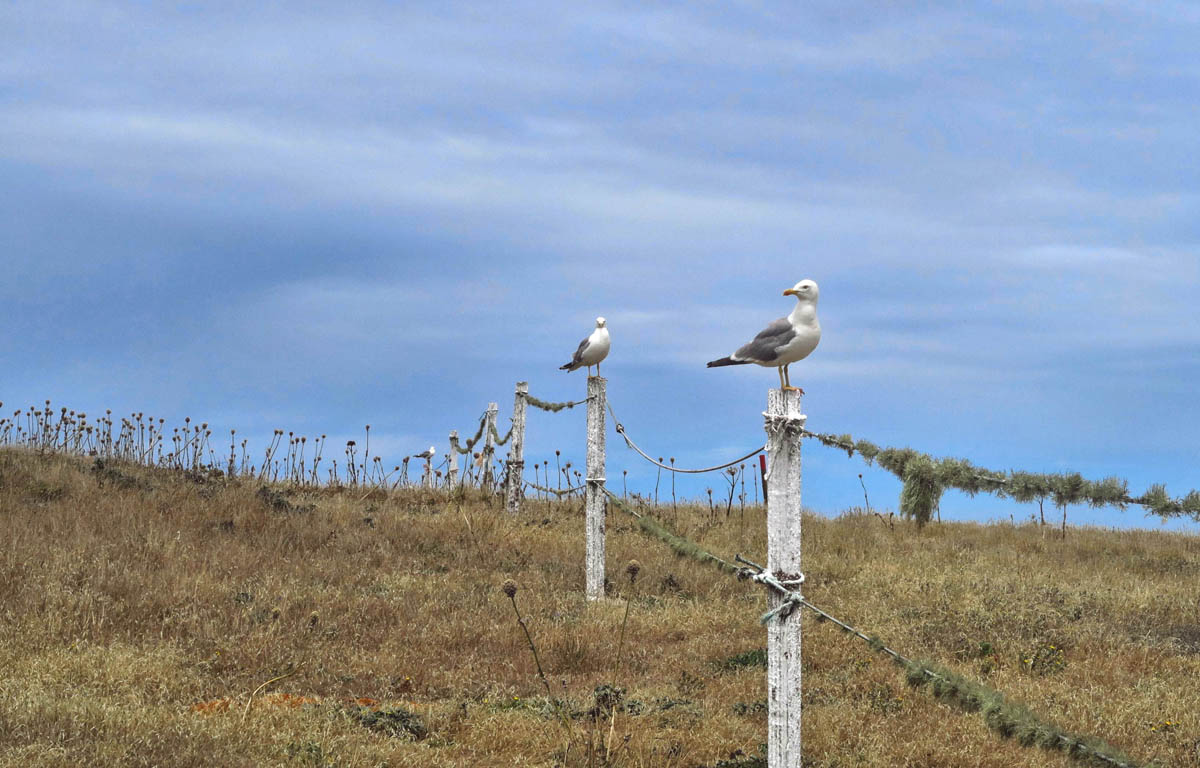 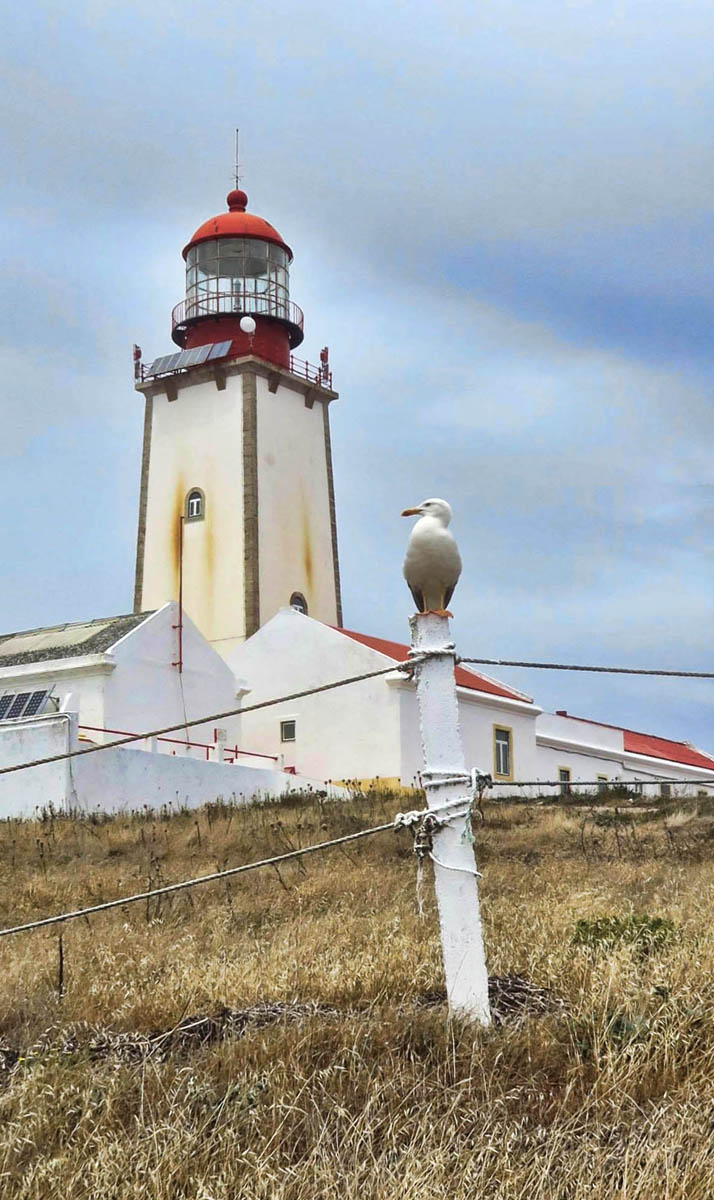 The first known inhabitants of Berlenga Grande were monks who in 1513 lived in a monastery positioned on the island to provide comfort and aid in navigation to victims of shipwrecks. The monastery was abandoned and demolished in the later part of the century, with the rocks being repurposed to build the São João Baptista Fort in 1651. The fort was built to prevent the islands from being occupied by pirates.  It was home to a garrison of twenty men at one time, until it was abandoned in 1847.

Berlenga Grande is a small island, only about a mile long and half a mile wide, but trails across the island can be a bit steep, particularly the stairway leading down to the Fort. It feels like my deep-knee bends down the steep stairs are never going to end, but I eventually reach the narrow path which leads atop the original 17th century arched bridge connecting the fort to the island. 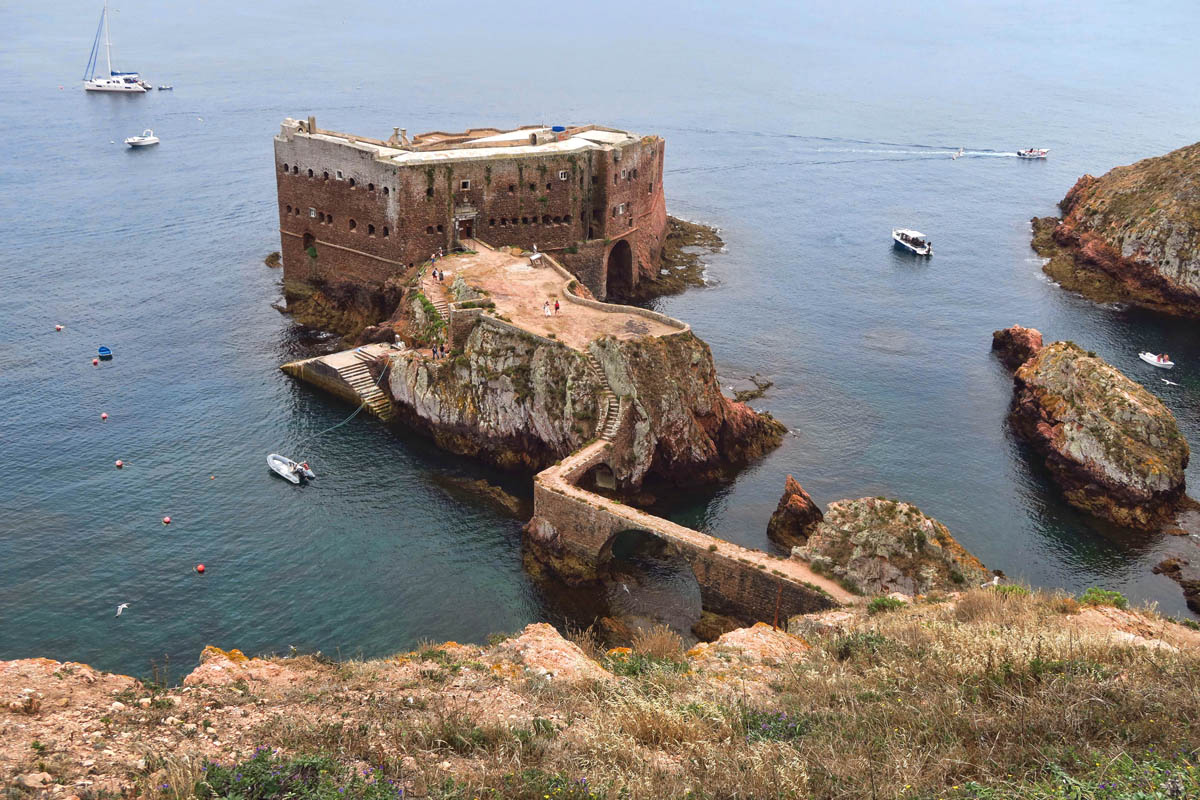 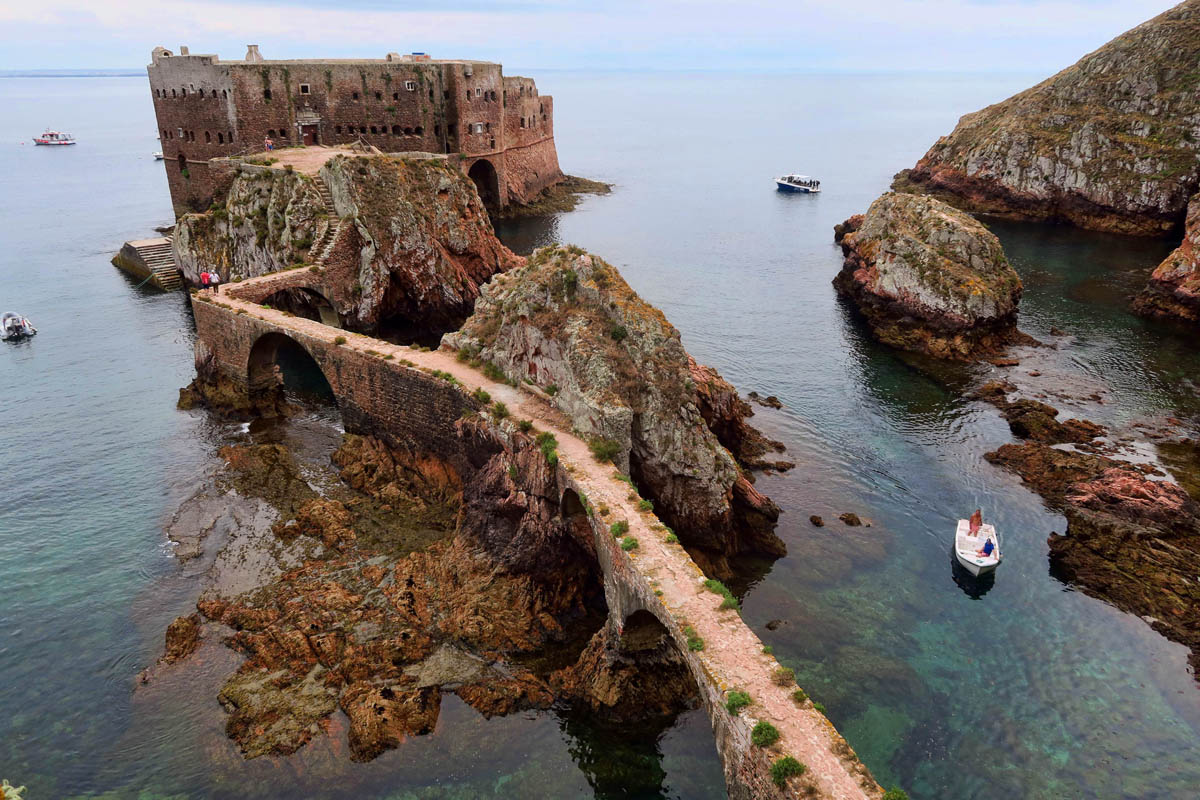 This is the shot that lured me in while in the Obidos Tourist Office. Such a pity the sun is not shining to highlight the aquamarine color, as the water is crystal clear. 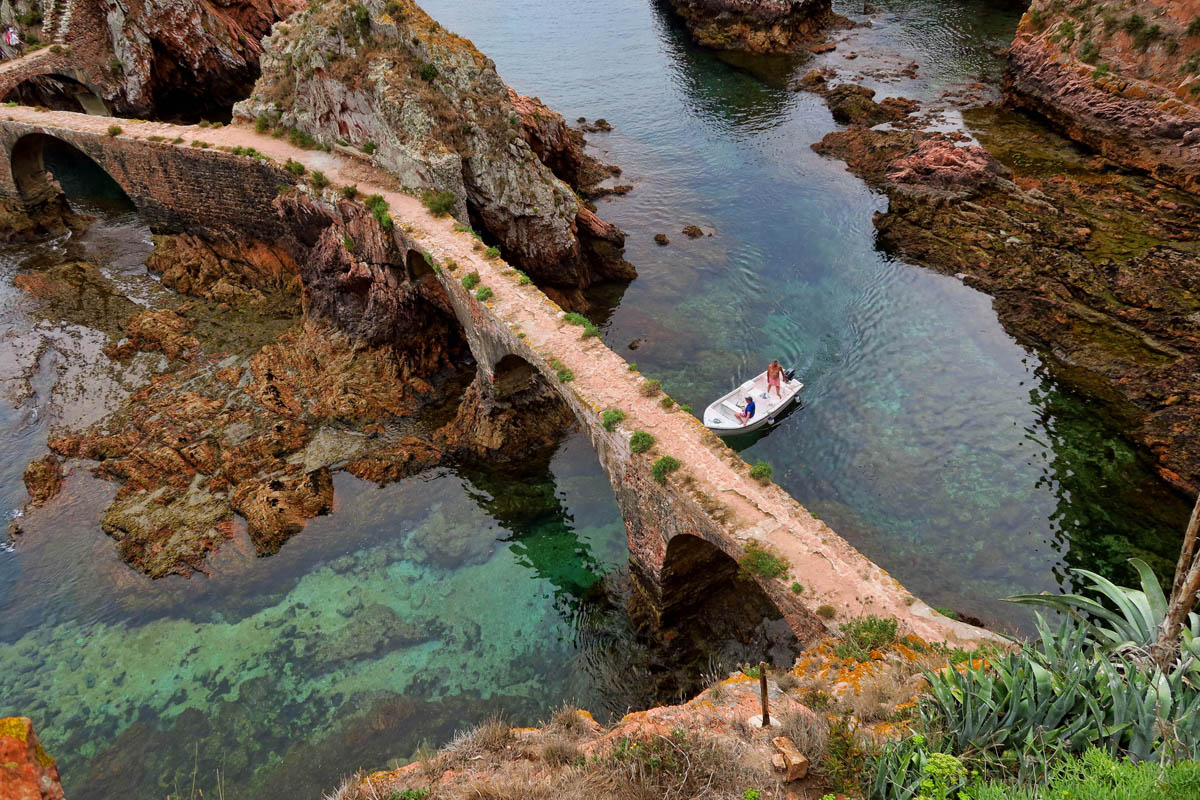 These are the fishermen I will encounter later as I explore the fort. 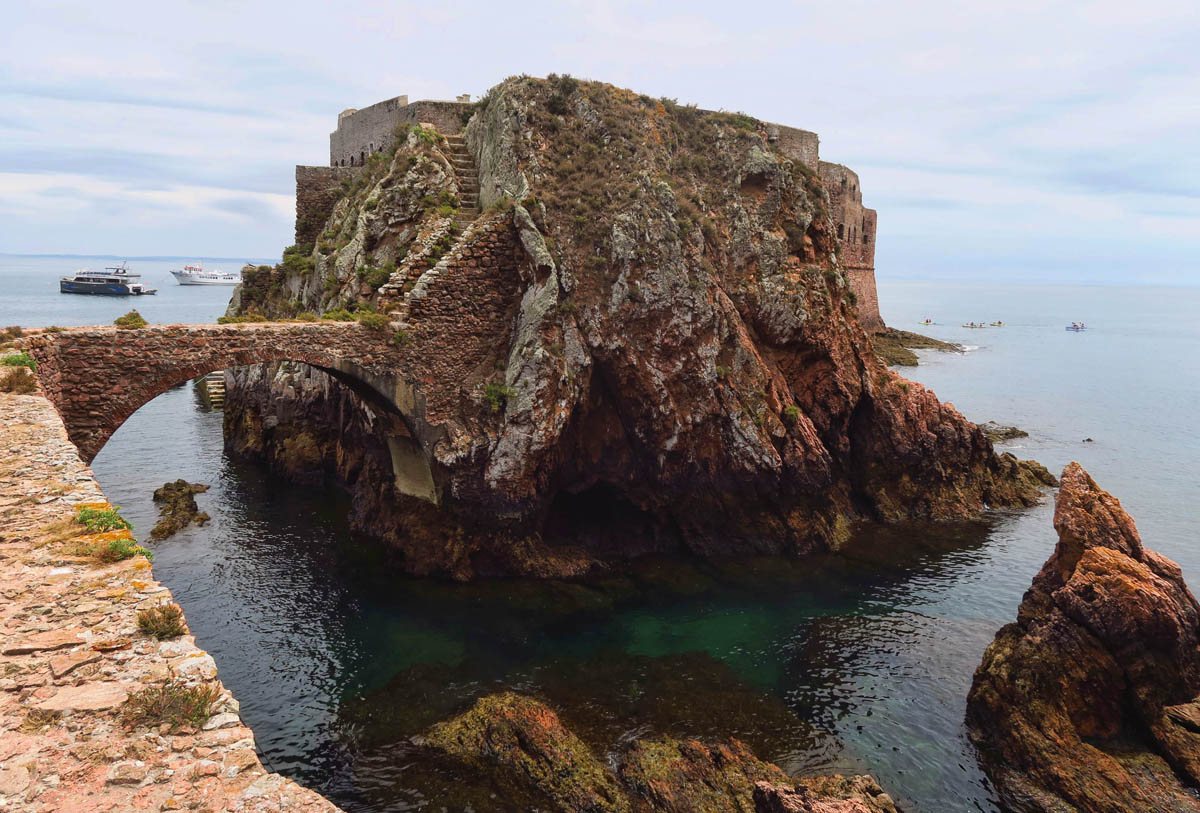 Fort is attached to the main island by the original bridge built in the 17th century. 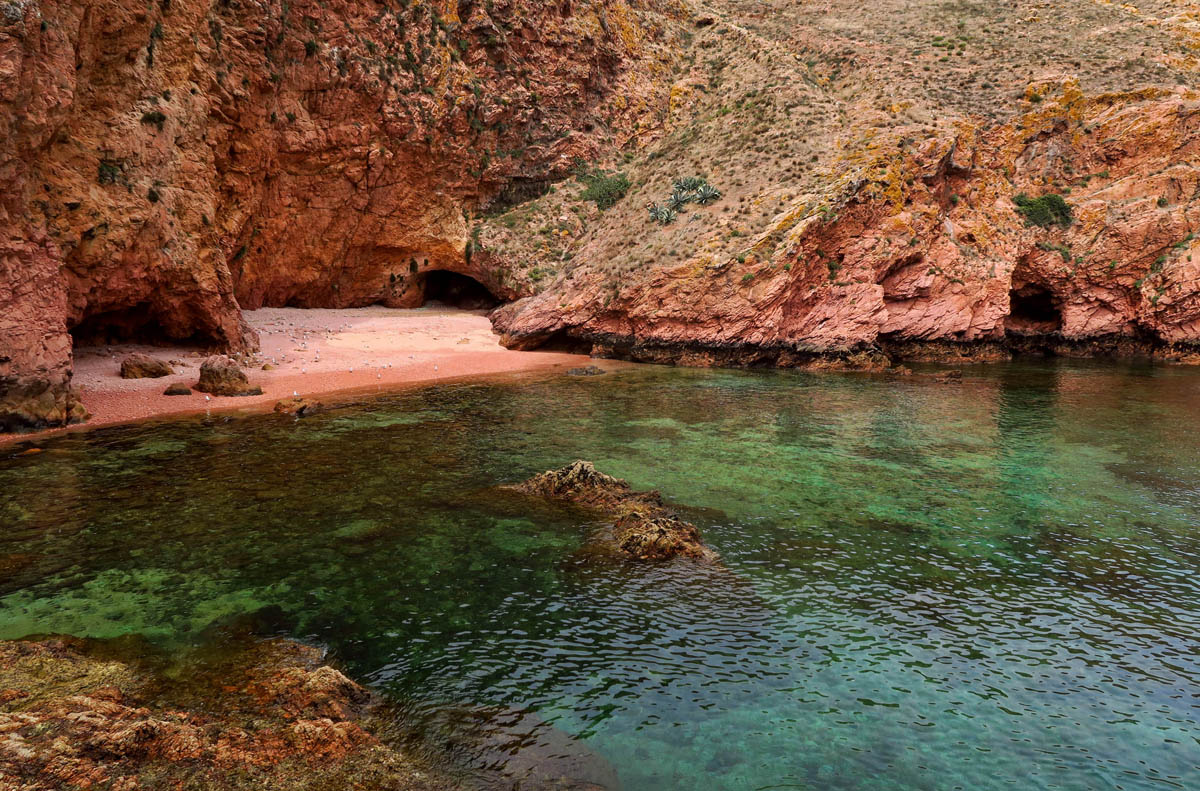 Nearby beach accessible only by boat. 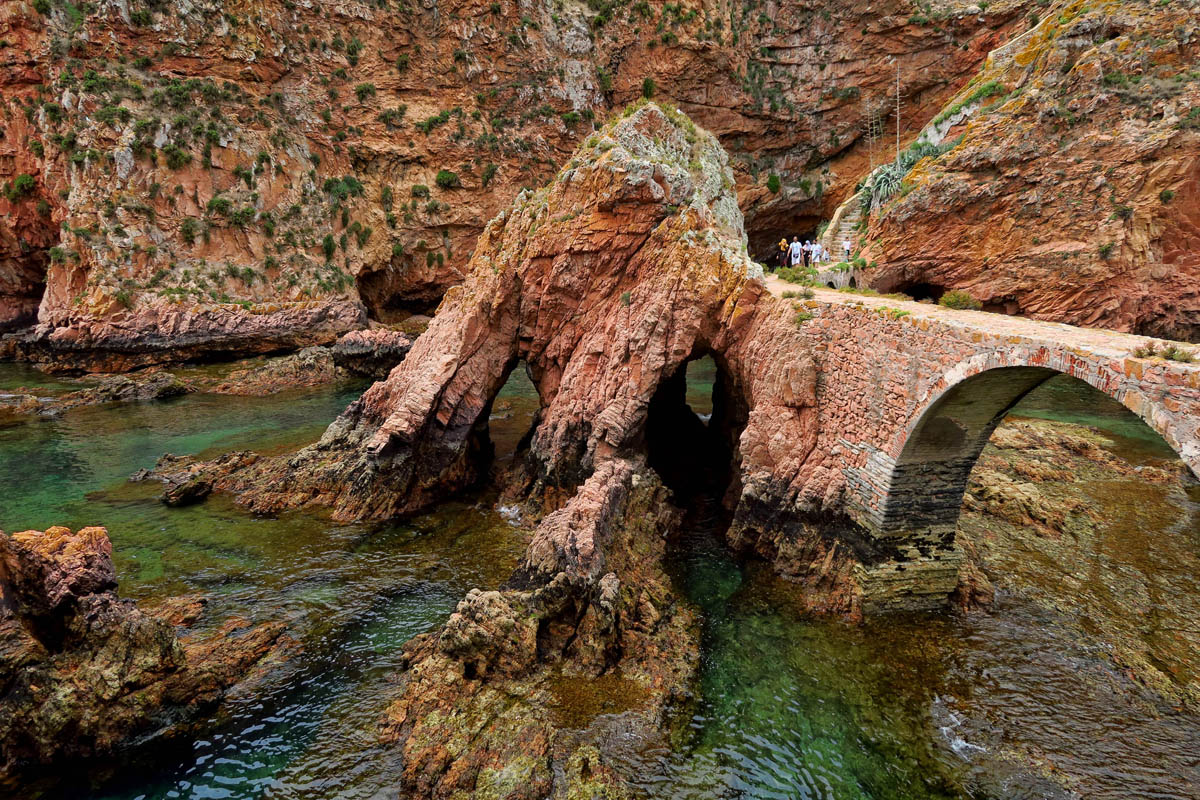 Here, you can get an idea of how beautifully clear the water is. 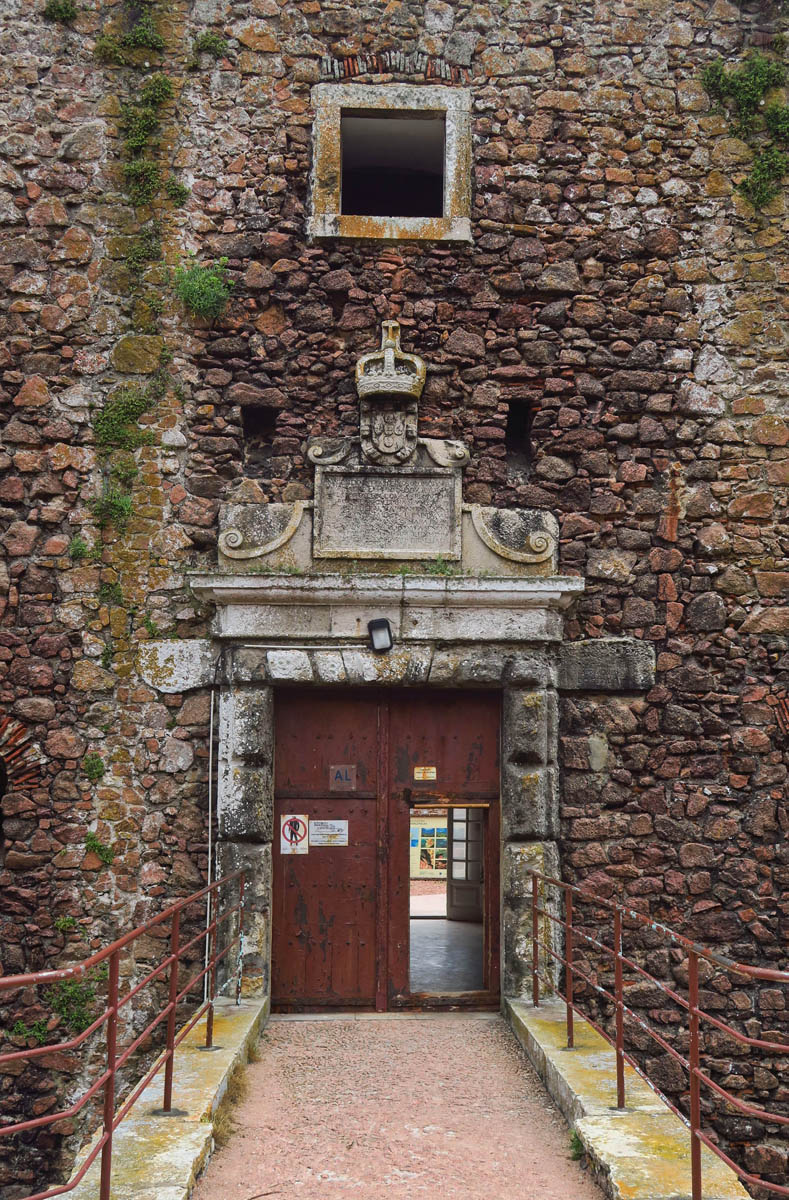 Entrance to the fort. 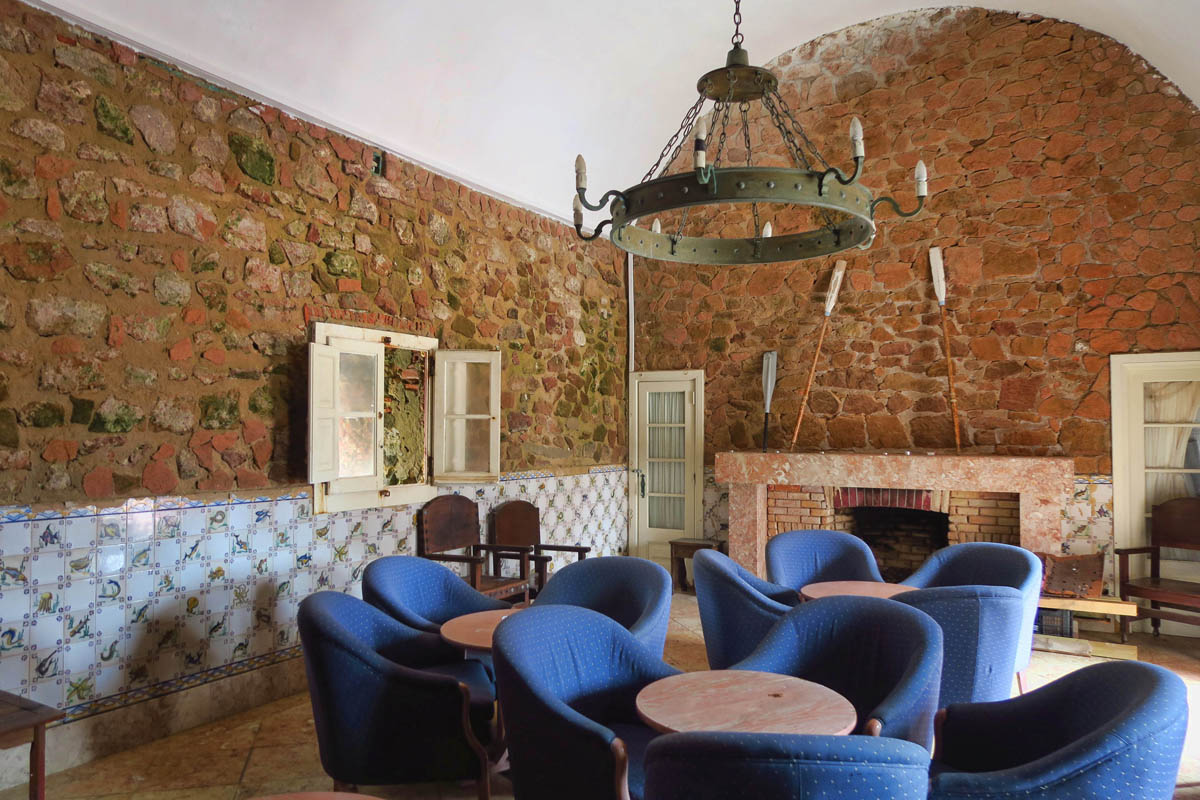 There is a cafe inside the fort walls, as well as basic rooms for rent.

The structure now serves as a marginal café and respite for travelers, offering spartan accommodations and limited refreshments. I purchase a cup of tea to patronize the establishment, then enjoy my PB&J and apple in one of their lounge chairs, despite the lack of sun. I am at least grateful there is no wind or rain to go with the gray skies.

After lunch, I wander around and encounter three fishermen drinking Rose’ while grilling sardines. The cultural difference is not lost on me that what self-respecting, Bud-chugging fisherman would be seen back in the USA sipping a glass of chilled “pink” wine along with the day’s catch?  The men were very generous in insisting I share one of their sardines, ripping off a chunk of their bread loaf to make a sardine sandwich while pouring me a glass of wine. 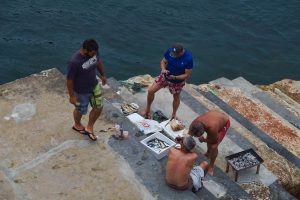 The two shirtless guys are the fishermen I spotted from above as they brought their lunch over to the fort steps. 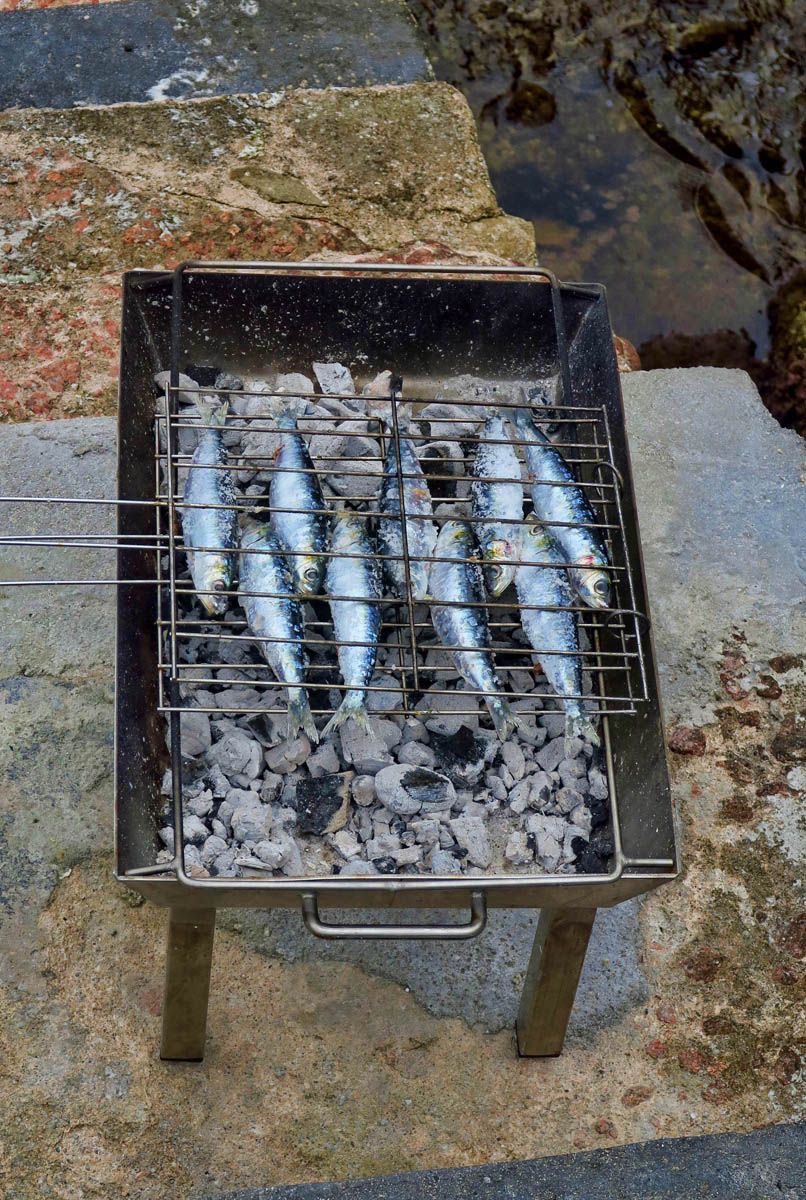 They brought along a charcoal grill to cook their fresh catch. Oh, the aroma from these sizzling sardines! 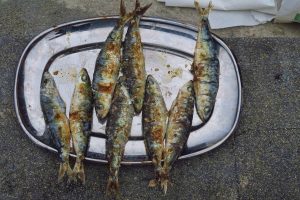 The grilled sardines taste as good as they smell. I tell the fisherman I hope I never forget how good they tasted!

I remark that I am not looking forward to the 300 ft stair climb, and am now a bit worried about being short on time to make it back over the island to the ferry dock by departure time. I ask the fishermen if there is boat service that takes passengers back around to the main dock. The man who speaks the best English says “I’m not sure, but we can get you one!” The guy whistles out loudly, and gestures to a passing glass-bottom boat. The boat approaches the stairs leading down into the water, and offers me a ride back to the main dock, as long as I don’t mind that he will be completing the glass bottom boat tour for the two passengers on board. I ask the cost, to which he replies, “Free!” The tour is almost over, so I get to join them for the visit to the last few caves before returning to the dock. 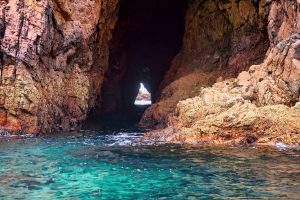 Joining the glass-bottom boat tour to the caves. 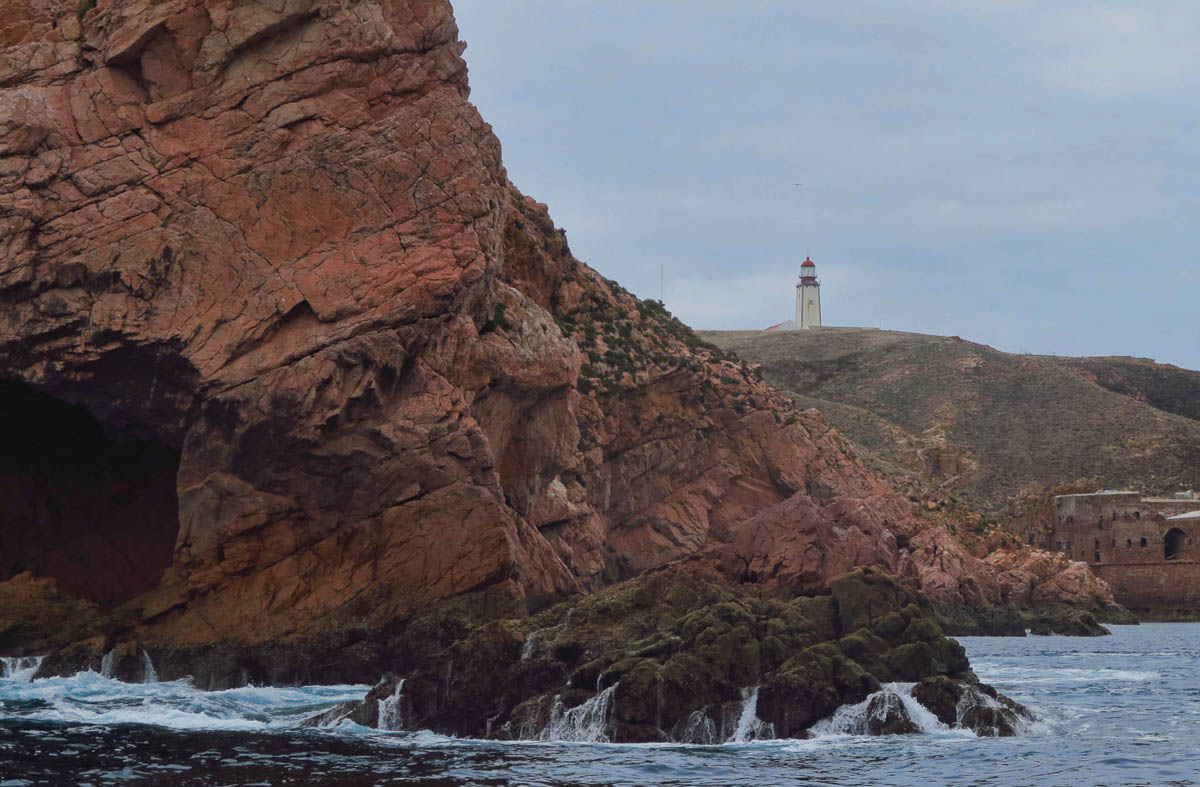 Motoring along the Berlenga Grande coastline. 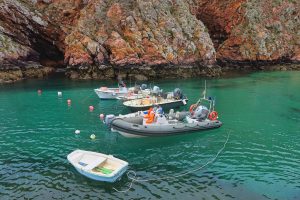 I return to the ferry dock full circle from my hike up over the island, and back by boat. 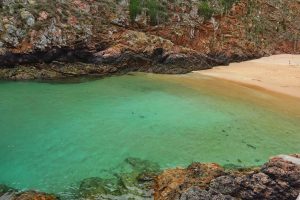 There’s ample time for a quick dip at this idyllic swimming beach near the dock, but the water is freezing, even during the summer. “No guts, no glory!”

I make it back to the ferry with time to spare. Now, if only I had a wetsuit!

12 thoughts on “Portuguese Hospitality in the Berlengas Archipeligo”