Nazaré was another Portuguese pronunciation challenge for me. I kept calling it “Na-JAIRE,” when it fact I should have known the accent on the é would indicate something different; three syllables, “NAH-zah-rey.” But the pronunciation was not the only thing that confused me about Nazaré.

Yet another place I knew nothing about and was not on my planned itinerary, Nazaré popped up as a result of a question prompted by my dear long-time friend Brian. I have known Brian for 20 years, and shared more travel conversations with him than any other person in my life. In fact, he was listed in the dedication of my travel narrative, “Alone but Never Lonely.” Brian and I used to sail together, and spent hours bobbing on boats in the Hudson River, talking about destinations on our respective bucket lists. He is like the E.F. Hutton of travel; when Brian talks, I listen. So when he asked if I had plans to visit Nazaré, of course my response was “Should I?” 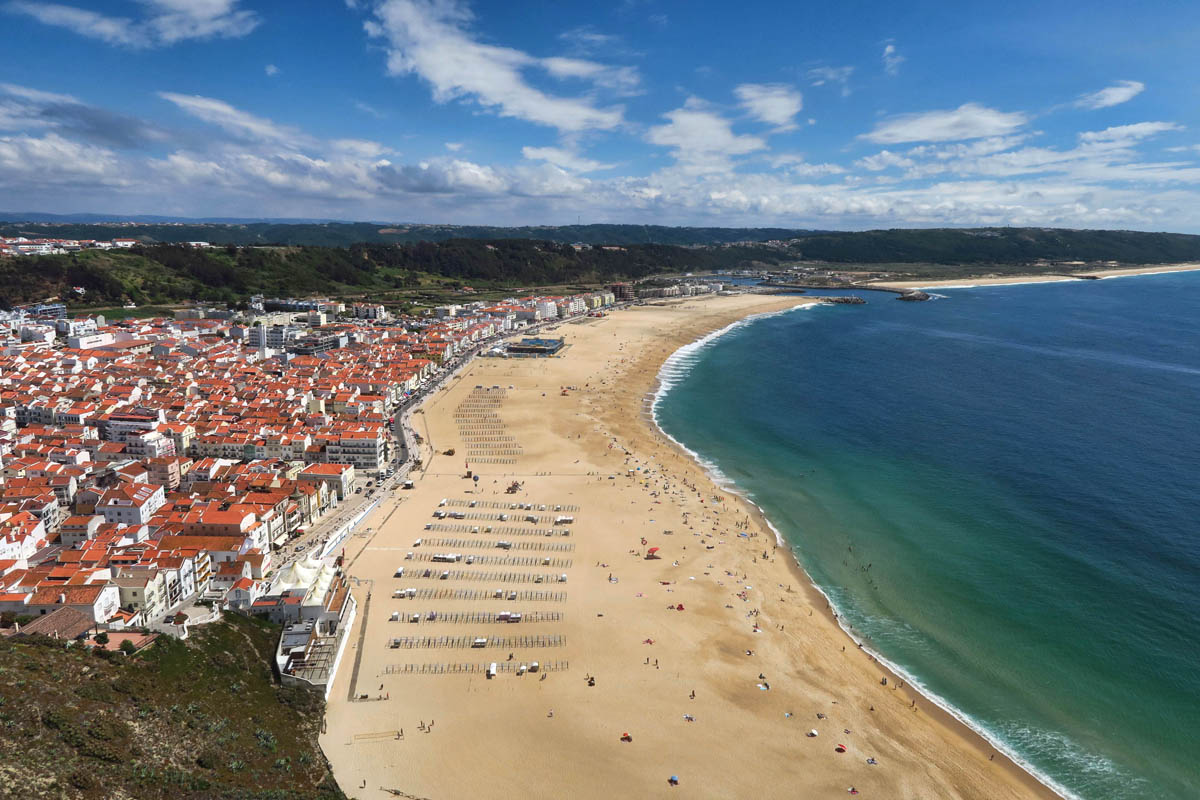 Nazare’ is located along the Costa de Prata, or Silver Coast of Portugal. 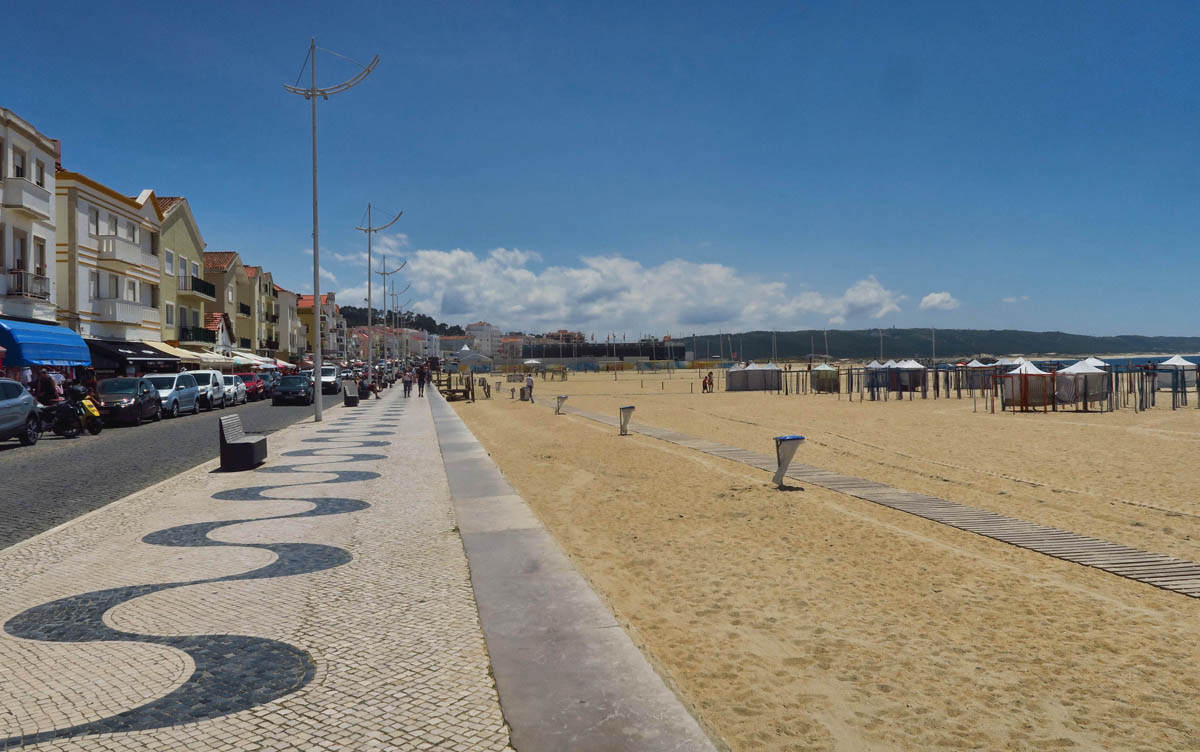 The lower section of town has a long waterfront lined with seafood restaurants, hotels and tourist shops accented with the black and white pave-stones so prevalent in Lisbon, just 70 miles away. 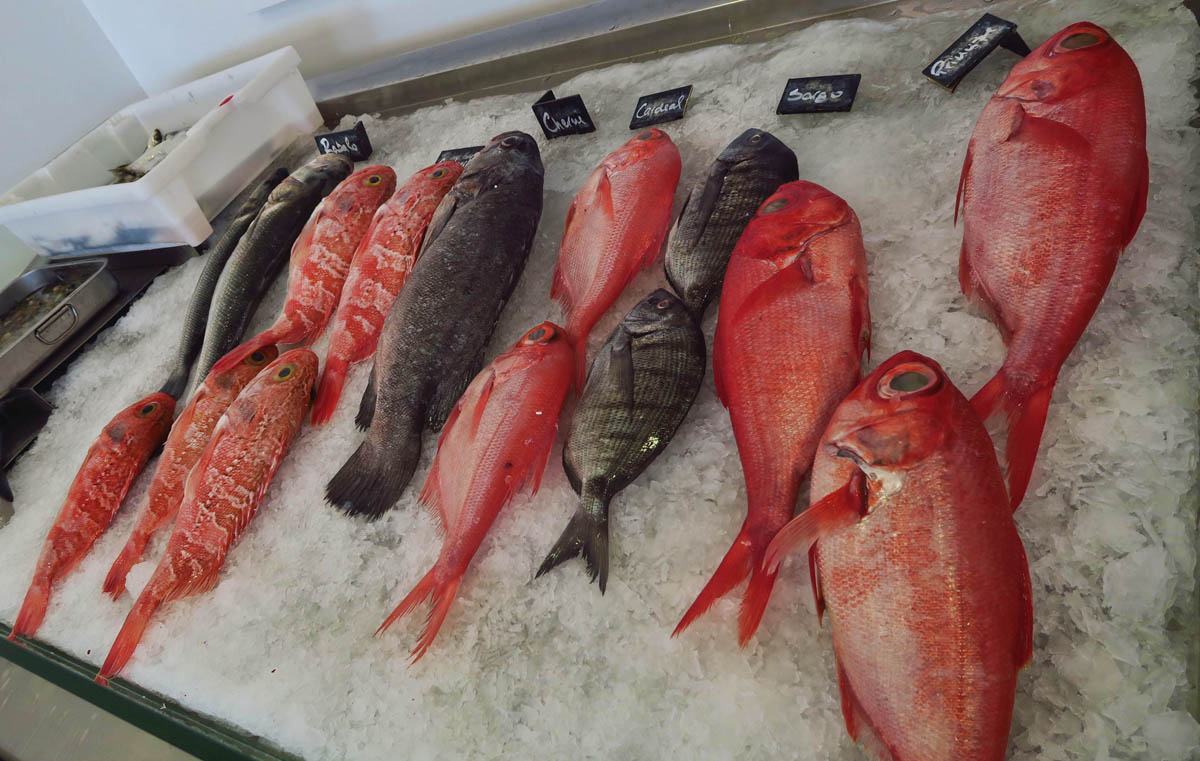 The area is known for fresh seafood. 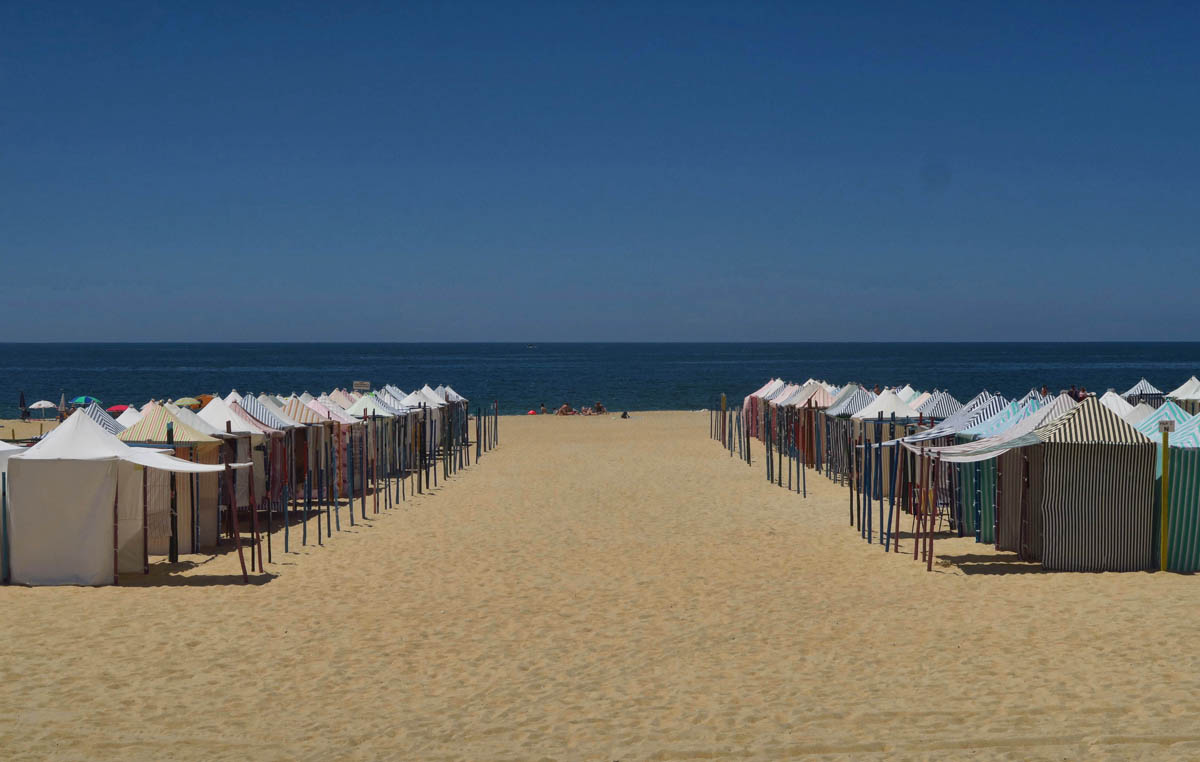 The lower section of Nazare’ faces one of the most beautiful crescent white sand beaches I saw while in Portugal. 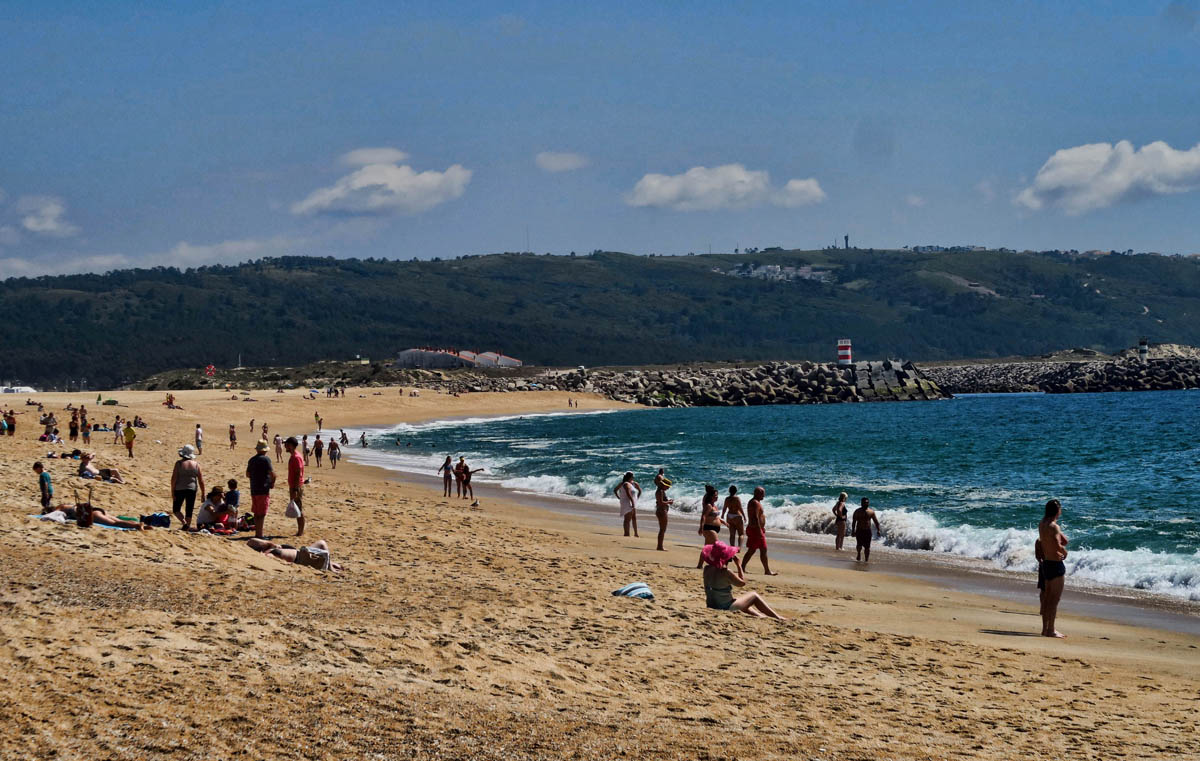 While the surf is a bit rough due to the wind, there are lifeguards.

Brian is a big fan of the sport of surfing, and Nazaré is home to the largest wave ever surfed since record-keeping started. But I am getting ahead of myself. First, a bit about the town.

Since Nazaré was a last minute decision, I had no time to research. As is my usual M.O., I went on booking.com to search for a centrally located guesthouse within budget with ratings in the “Good to Very Good” to category. I then checked to make sure I could get in to Nazaré by bus from Obidos, then also get a bus northbound to continue my journey. That is the sole extent of research that I had done prior to arrival. 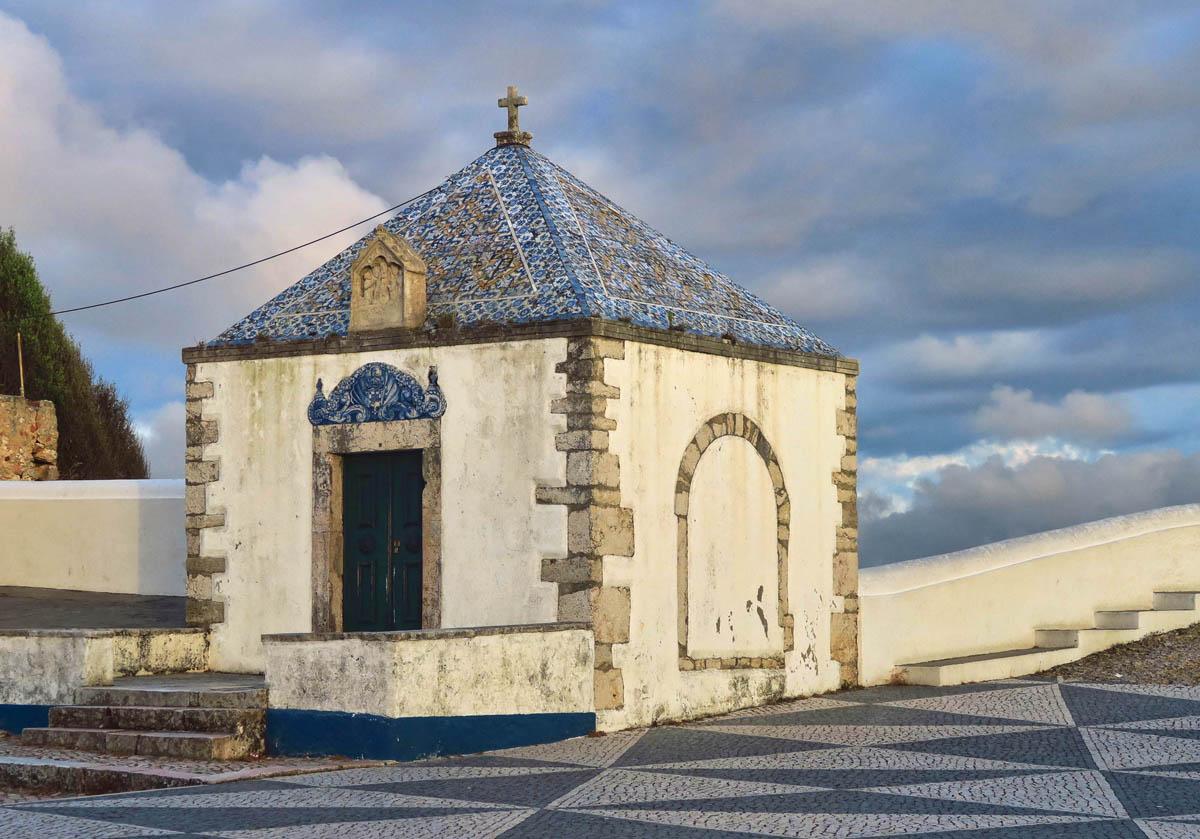 Ermida da Memória chapel, famous for the legend of the miracle that Our Lady made to prevent the horse of the nobleman, D. Fuas Roupinho, leaping over the precipice. 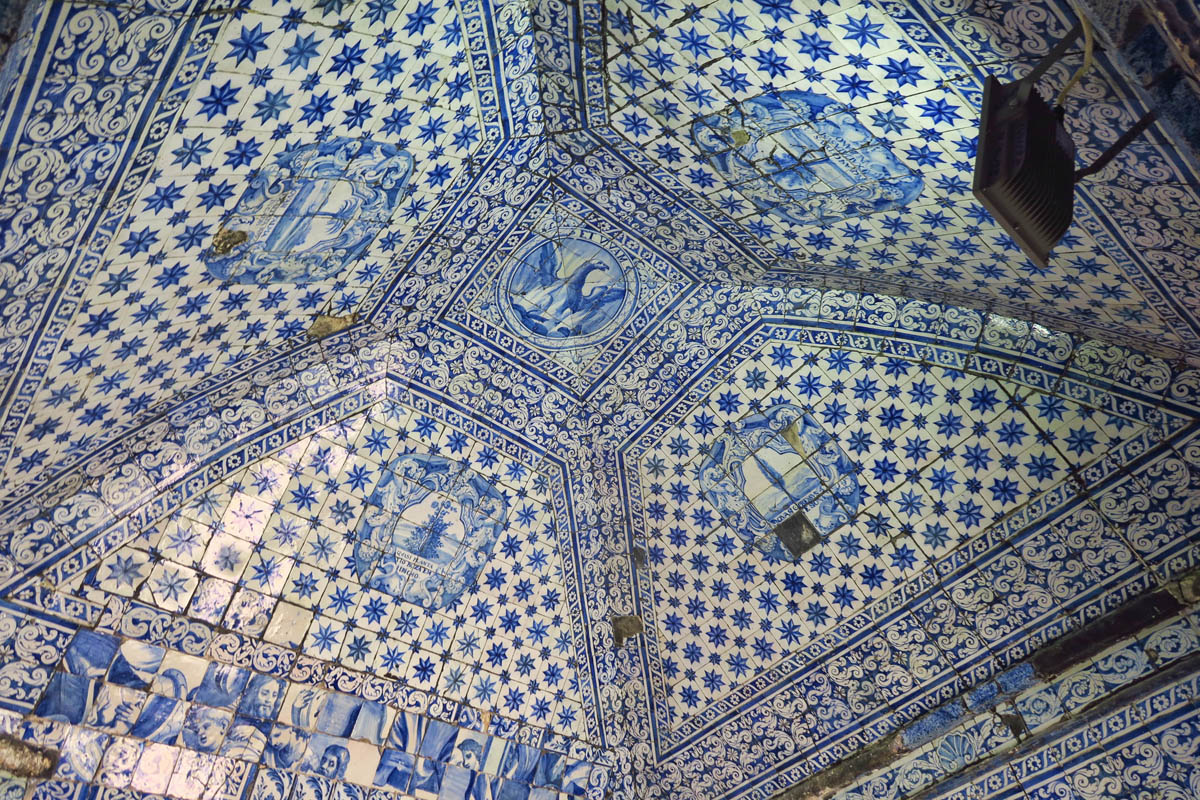 The inside of the chapel is lined with beautiful blue and white azuelos, or tiles. 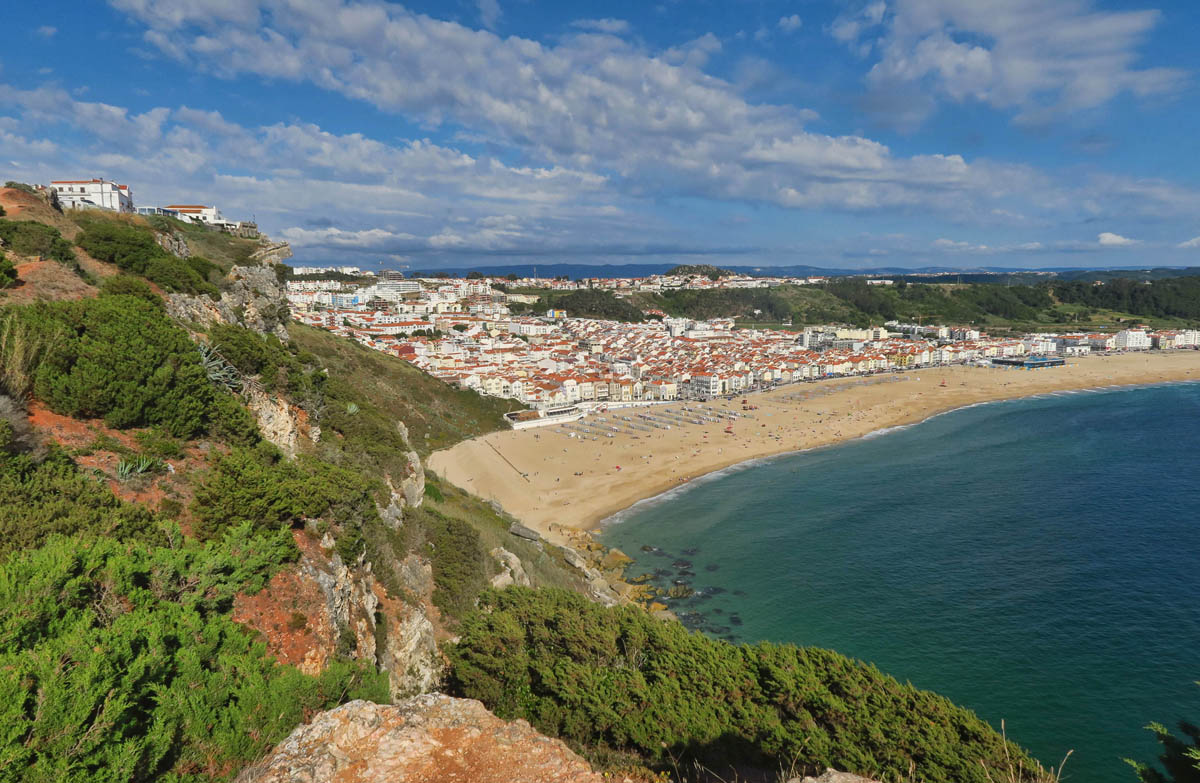 View from the top of the headland, known as Sitio. 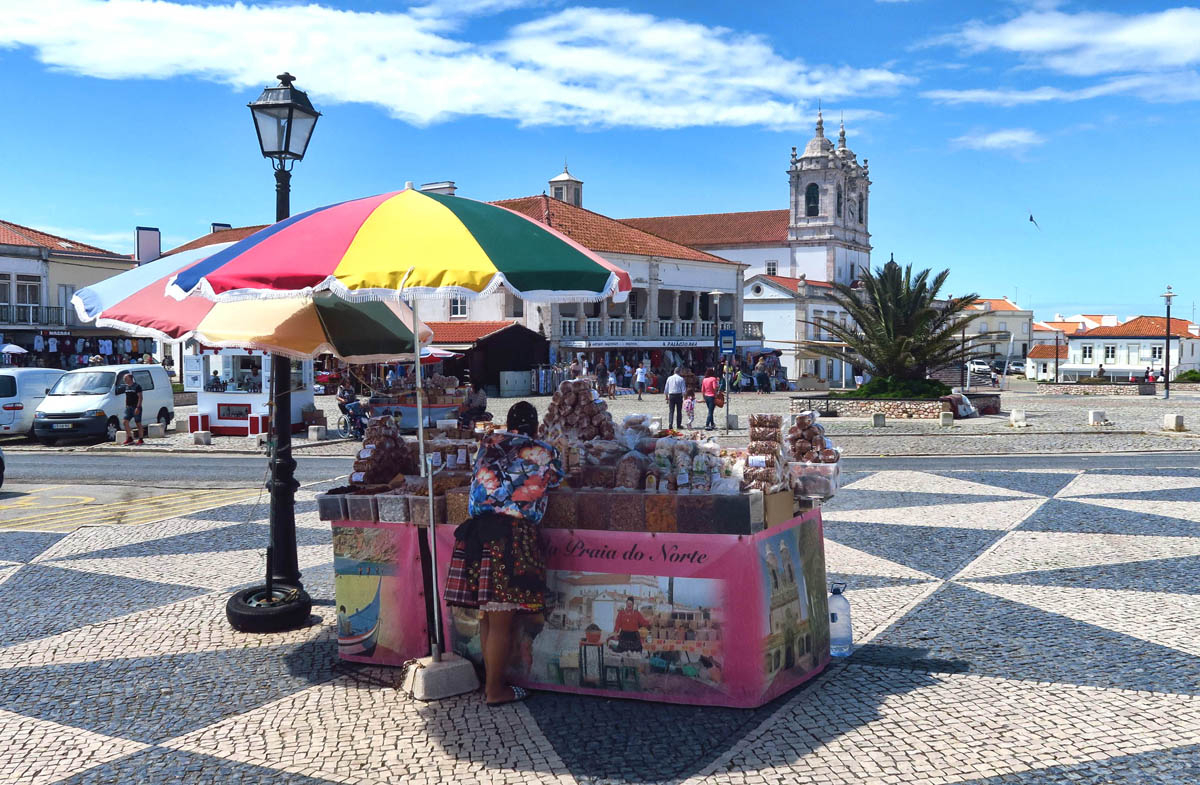 This woman is wearing the traditional fishmongers outfit with seven different flannel skirts. 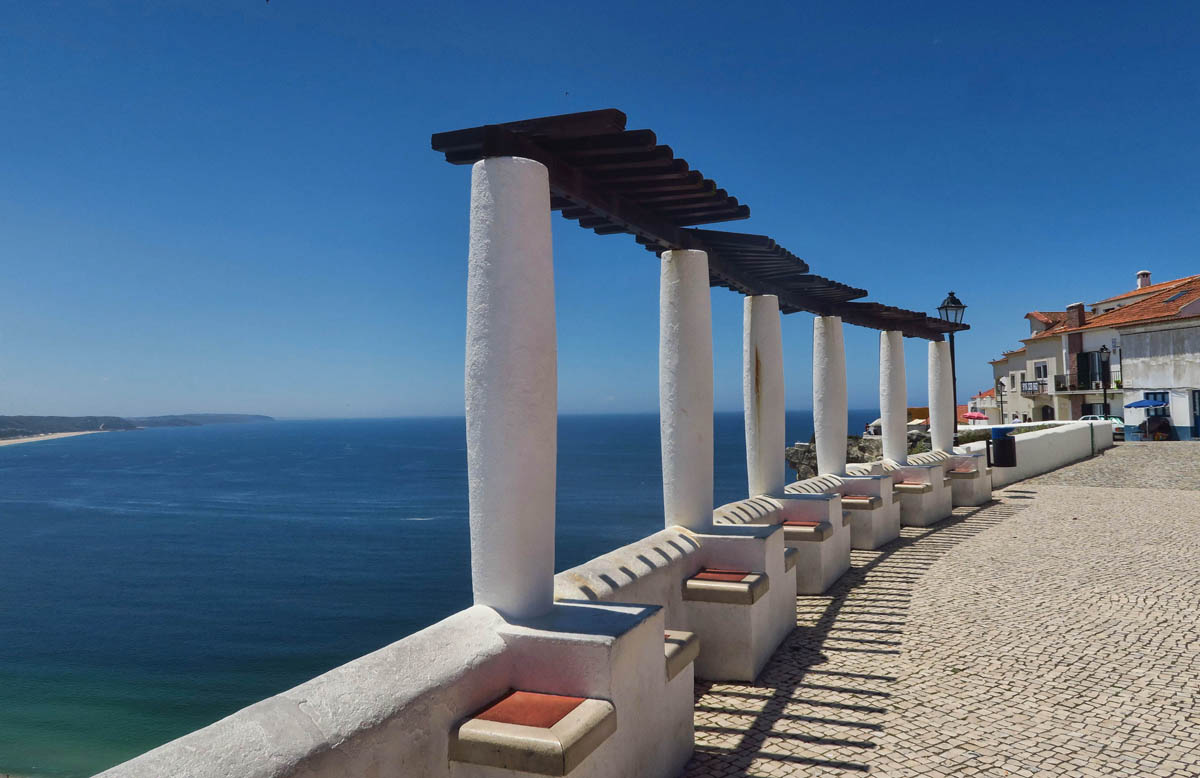 Quite incredible views from the Sitio lookout. I sat here and enjoyed a fresh squeezed lemonade in the salty sea air on a warm day.

Of all the Portuguese towns I had visited so far, there seemed to be less English spoken in Nazaré. Booking.com indicated that Vina’s Place, my booked accommodation was less than half a mile from the main city center. Yet when I pulled it up on Google Maps to make my way there on foot, it kept coming up as more than two miles…too far for me to walk in the midday sun with luggage, even if it was only a backpack. So I asked the woman at the bus station about a taxi, to learn there is only one taxi stand in town. And based on my experience, only one taxi. I sat on the bench for over an hour watching the same guy leave with one fare and return for another. So frustrating, I almost got back on the bus!

Once it was finally my turn in the queue, the taxi driver was as confused as I was. We climbed a massive hill, and wound around residential streets until he took pity and turned off the meter. When I got out of the cab on a dead residential street miles up a massive hill from downtown, I was pissed off at what I thought was a case of “false advertising” by the guesthouse, claiming they were near the city center. Who knew there were TWO? 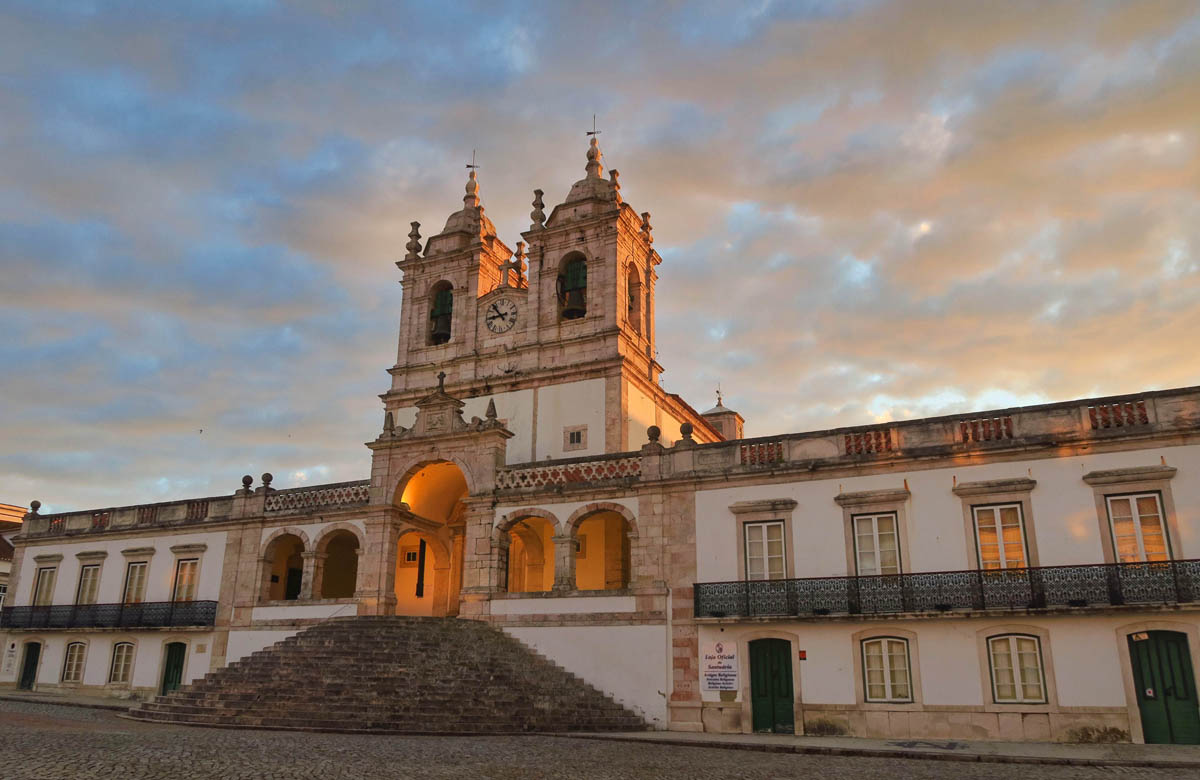 I was shocked to learn this beauty, the Sanctuary of Our Lady of Nazareth, founded by King Ferdinand I in 1377, was only two blocks from my guesthouse, when I thought I was so far from the city center. 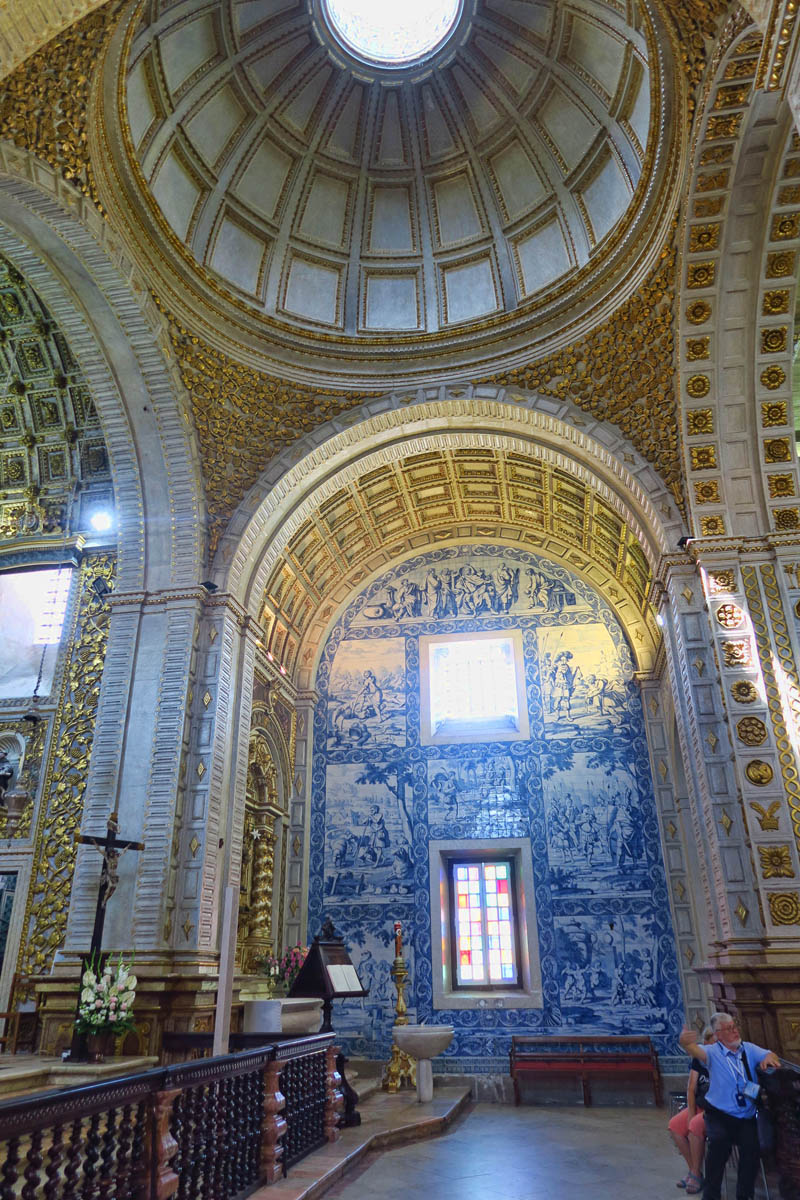 The inside of the church is beautiful. My quest here is to find the statue of the “Black Virgin” said to have been carved by St Joseph of Nazareth and venerated by the Apostles. It is purported to be original. 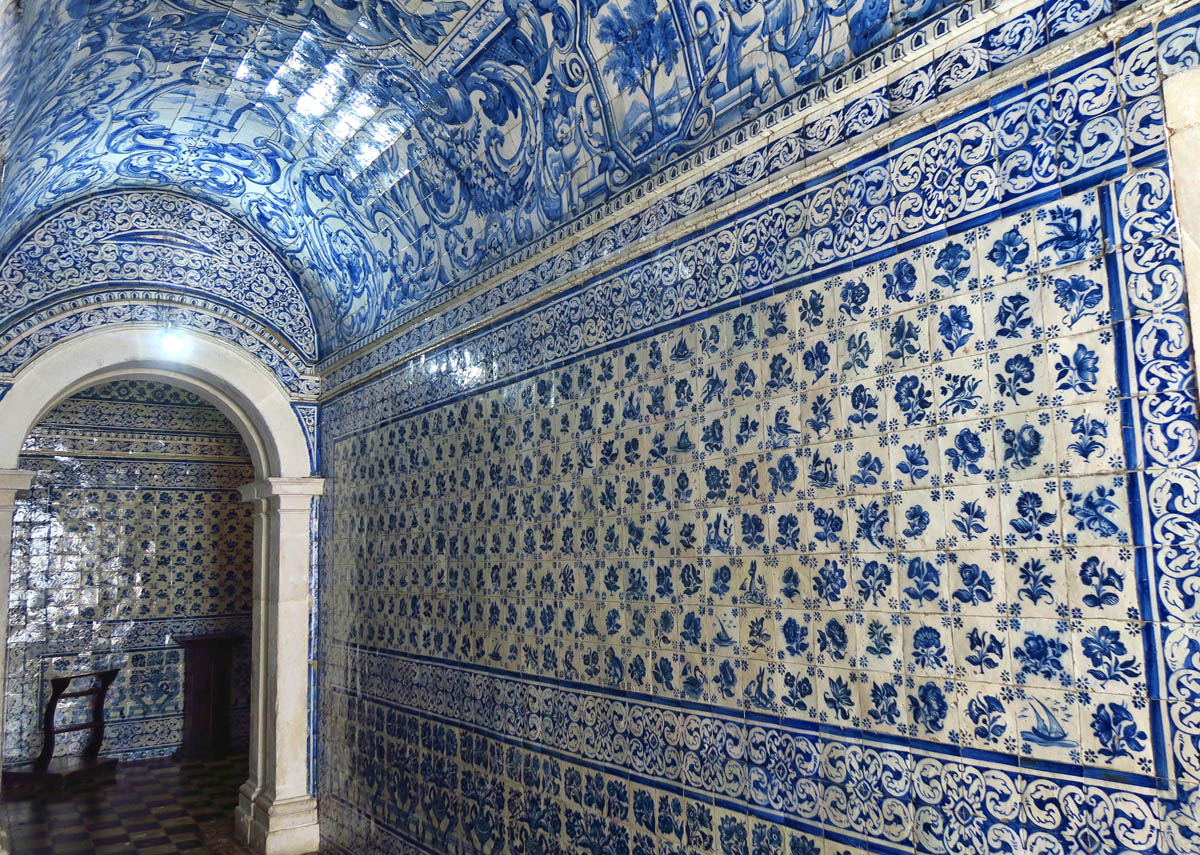 Behind a table with a basket asking for a €1 donation is a long tiled hallway. It leads behind the altar to a small room where the virgin is on display. 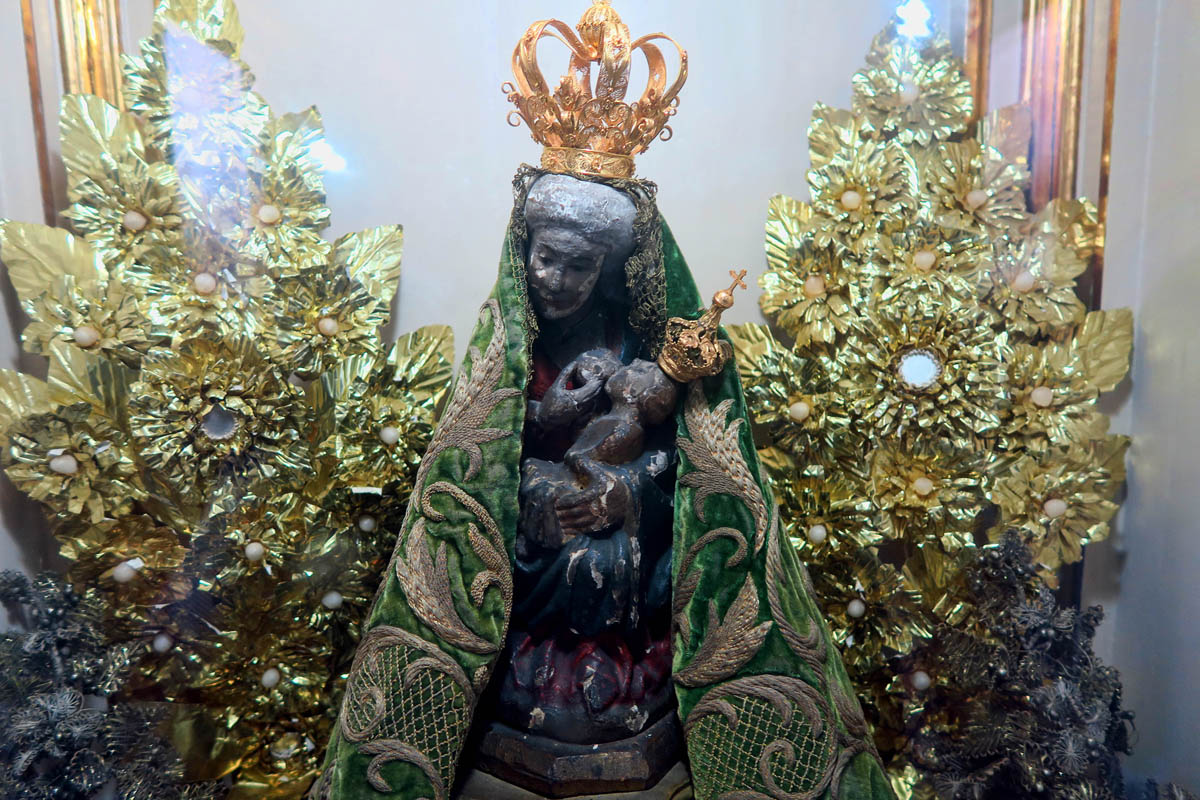 Carved from wood, the statue is believed to have miraculous properties and pilgrims came from all over Portugal to visit the shrine.

Later after settling in, I went for a walk about. I walked just one block from Vina’s Place beneath the arch of an ancient viaduct, and stumbled into the most beautiful “town square” I had seen thus far. It soon became clear that there were TWO city centers in Nazaré, one upper on the headland known as Sitio, and one lower along the crescent beach, both connected by a funicular. While not close enough to walk the road from the bus station to the guesthouse, the funicular would have delivered me there in just five minutes. 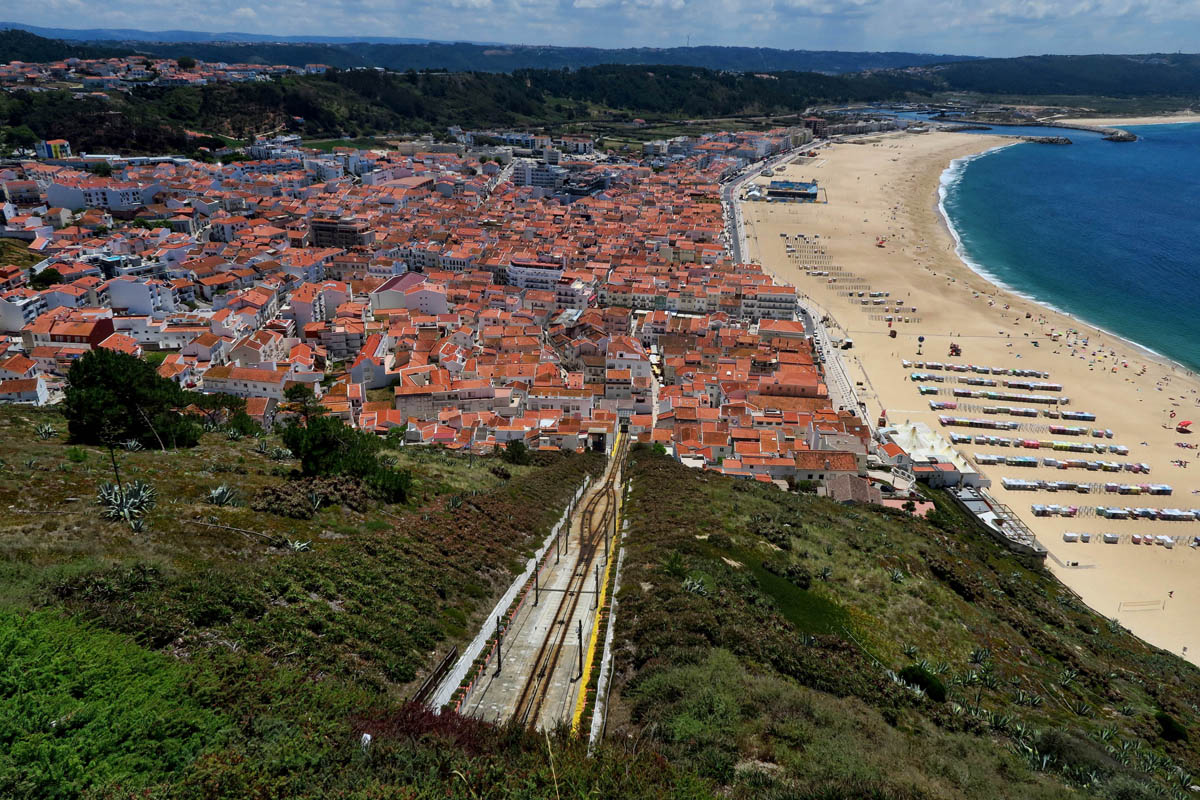 The guesthouse where I was staying was only two blocks from the upper funicular station, which turned out to be such an easy commute to the lower city center. 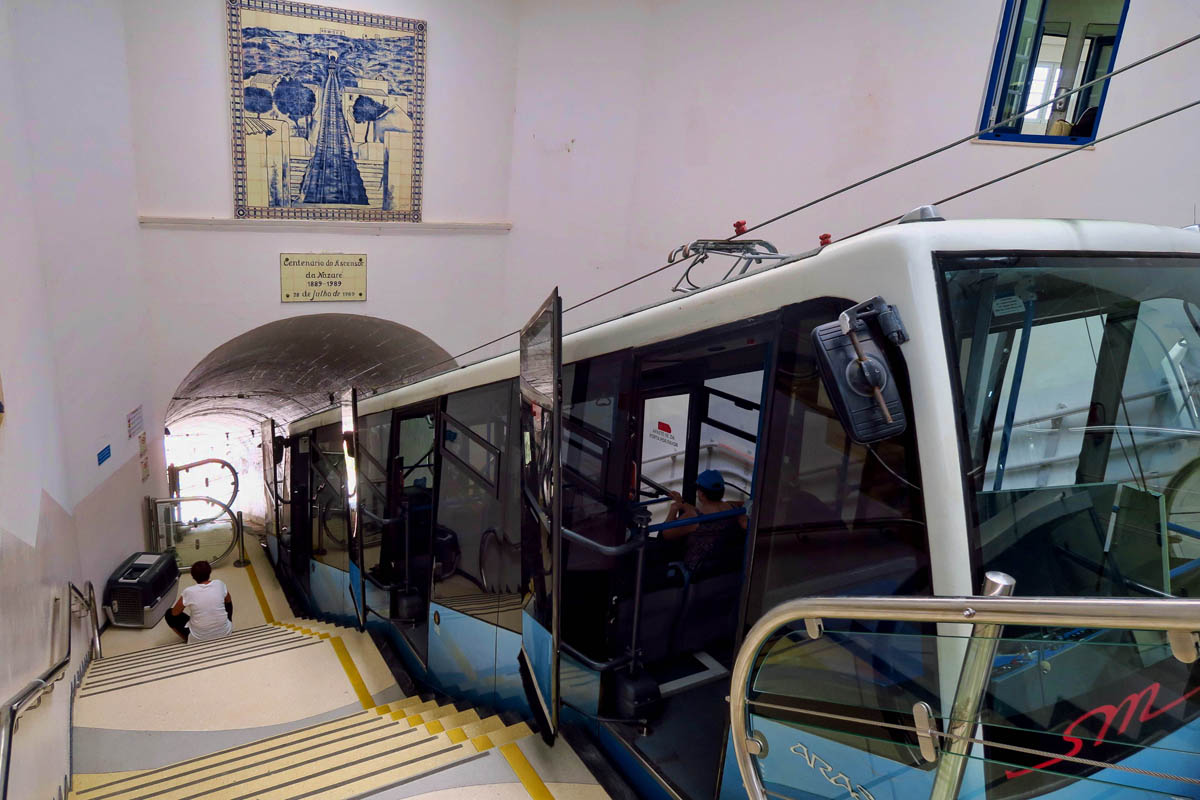 The funicular runs about every 15 minutes, and costs €2.50 round trip. Day passes are also available. 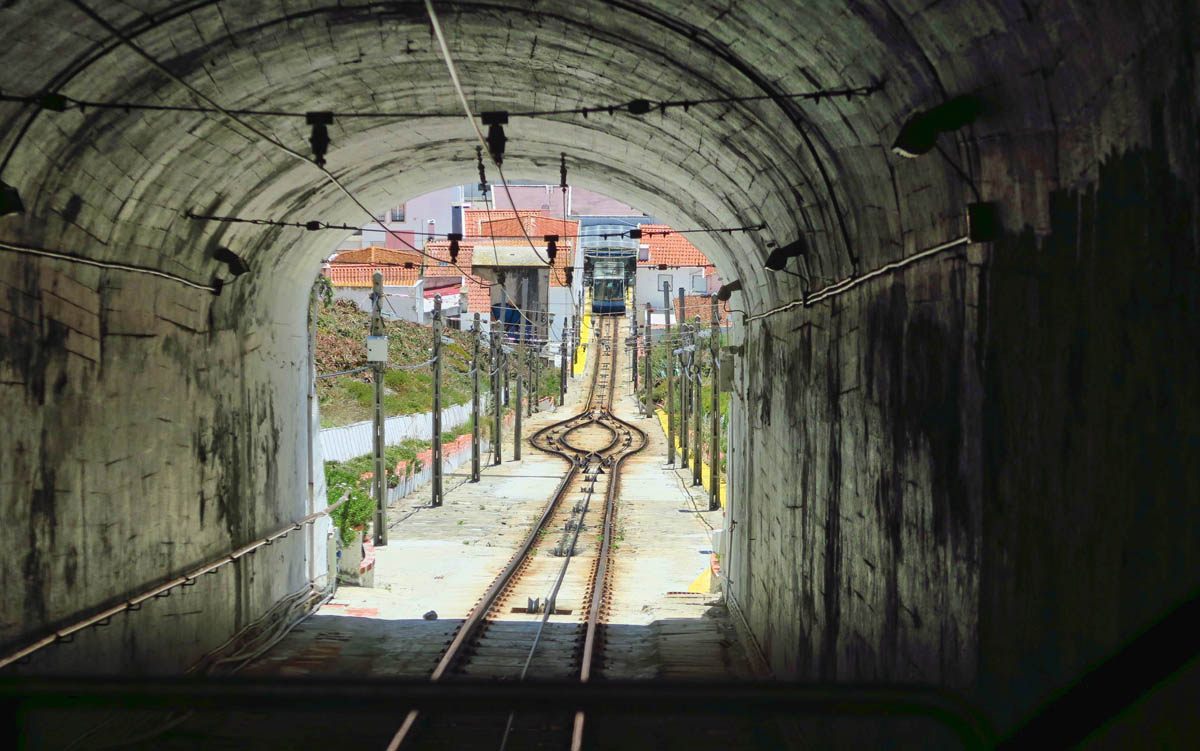 Without this funicular, transport into town would be more like €20 round trip. 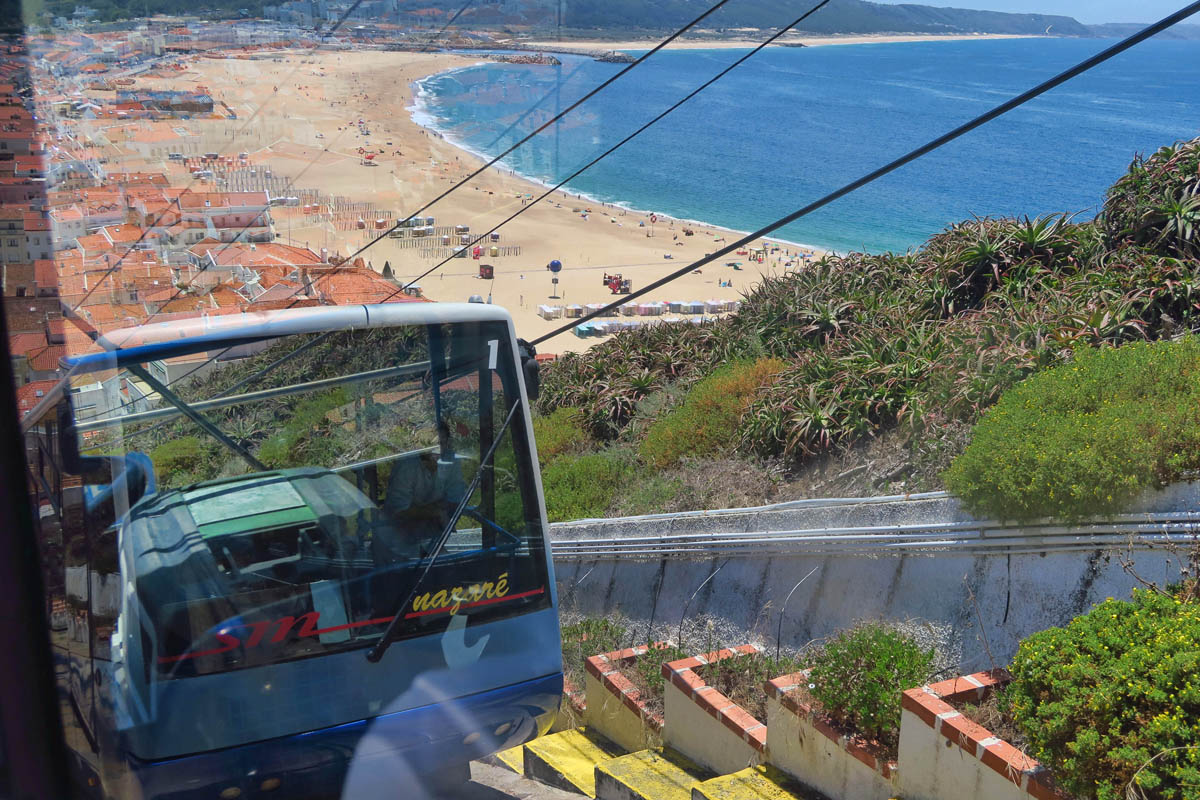 Plus it’s quite a scenic ride!

Nazaré was once known as a traditional fishing village where the men left the shores at night to fish in traditional wooden boats, while the women used drying techniques stretched out on fishnets to preserve the catch. To date, one can still find women wearing their traditional costumes of headscarves and embroidered aprons over seven flannel skirts of different colors.

But I am here at the wrong time of year to witness what has made Nazaré famous in recent times. October to March, Nazaré is home to some of the largest surfing waves in the world. These towering walls of water are a due to the Nazaré North Canyon, also known as the “big waves generator.” The Nazaré North Canyon is one of the largest submarine canyons, a giant hole in the bottom of the sea 140 miles long and three miles deep. This rift in the ocean floor causes waves to separate in two. Speed then increases as the waves travel the walls of the canyon, then they reunite again like two waves stacked on top of each other. With the opposing ocean current returning from the beach, this creates the “perfect storm,” generating waves up to 100 ft. The highest of these waves ever surfed on record was in 2010 when Garrett McNamara broke the world record by catching a 78 ft wave. He maintained the world record until 2017 when Brazilian Rodrigo Koxa surpassed his world record by two feet, an accomplishment now listed by Guinness World Records as the highest wave ever surfed. 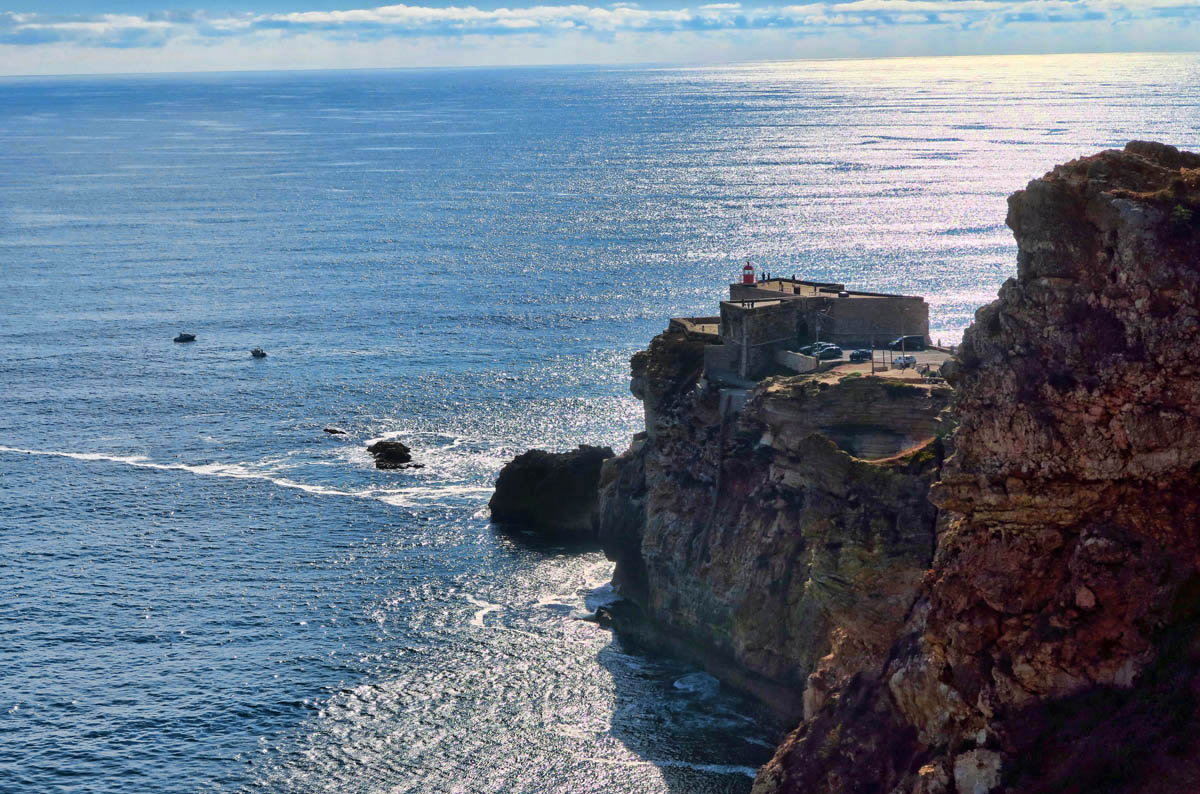 Separating the two beaches, Nazaré Beach to the south, and North Beach, is the 900 ft high promontory topped by Fort of São Miguel Arcanjo, or the Fort of St Michael the Archangel. See lighthouse out on the tip. 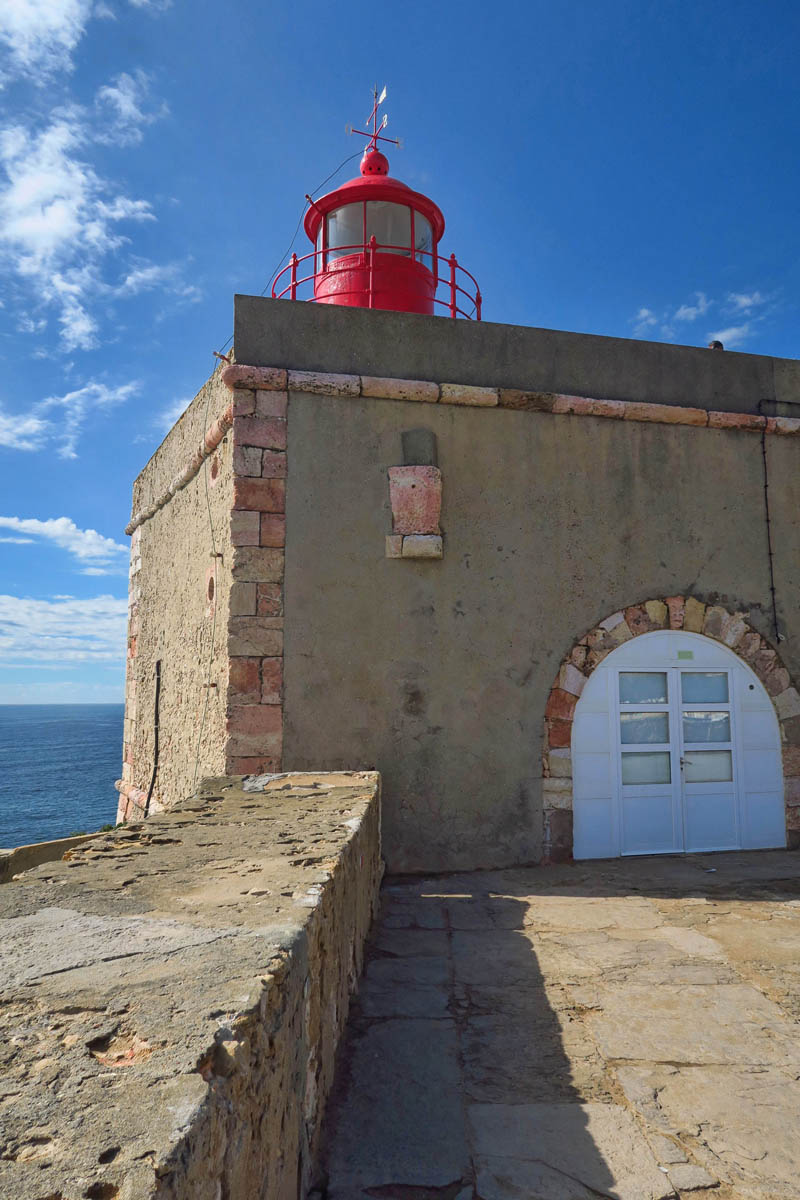 The lighthouse is situated on the roof of the old fort. 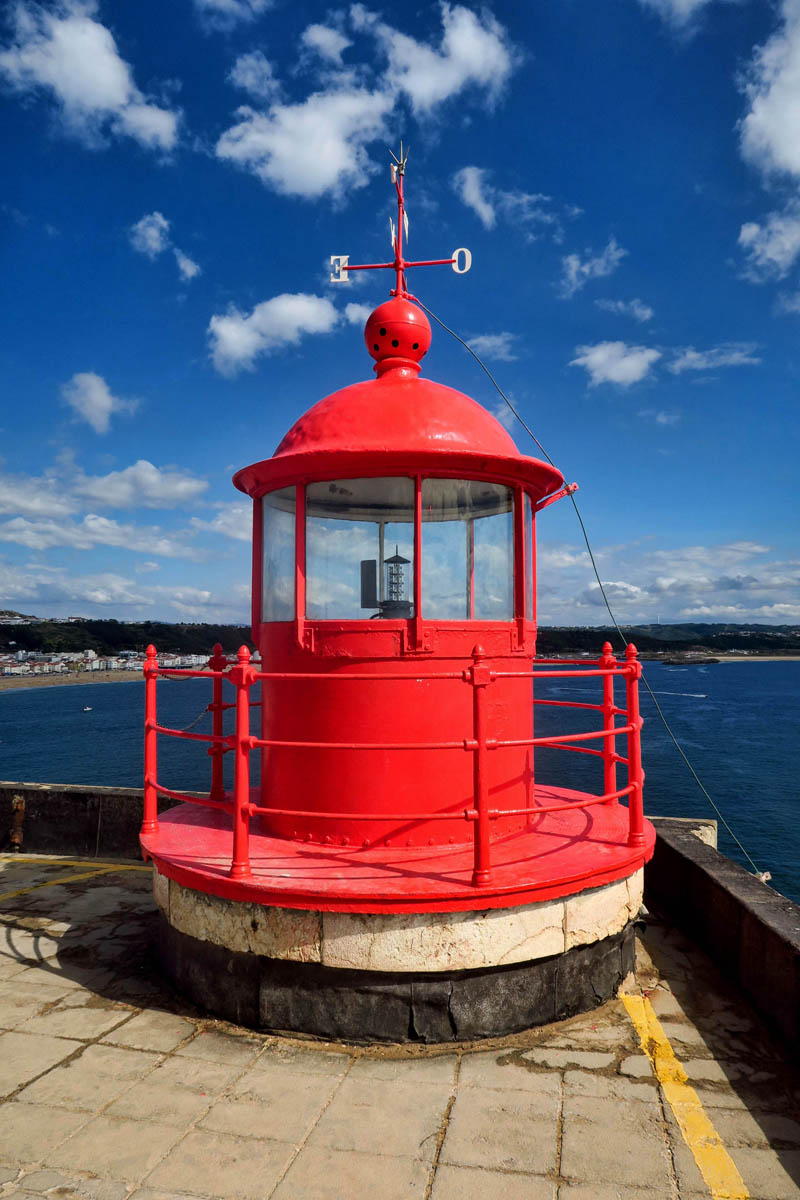 One can walk out onto the roof of the fort and stand face to face with the 8 ft tall lighthouse. During peak season, this fort rooftop also serves as a viewing platform to watch the 100 ft waves. 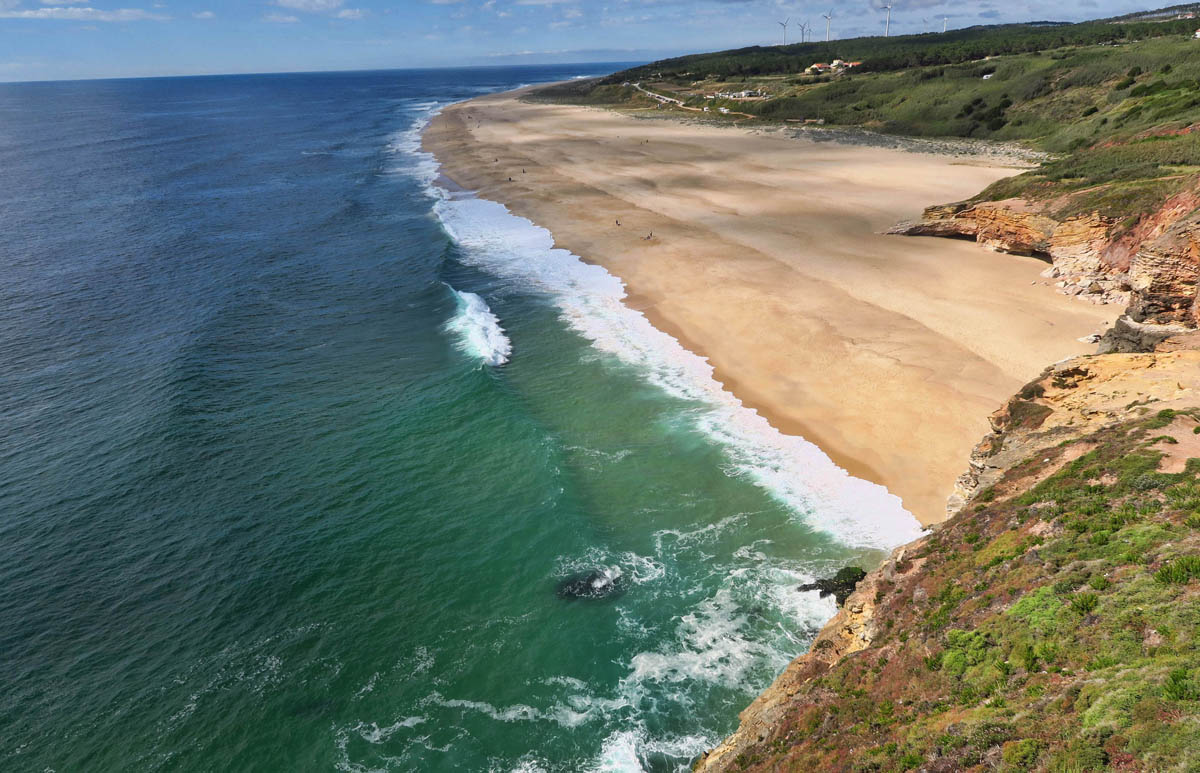 View of the North Beach from the roof of the fort. Sadly, the waves at this time of year are barely big enough for beginning surfers. 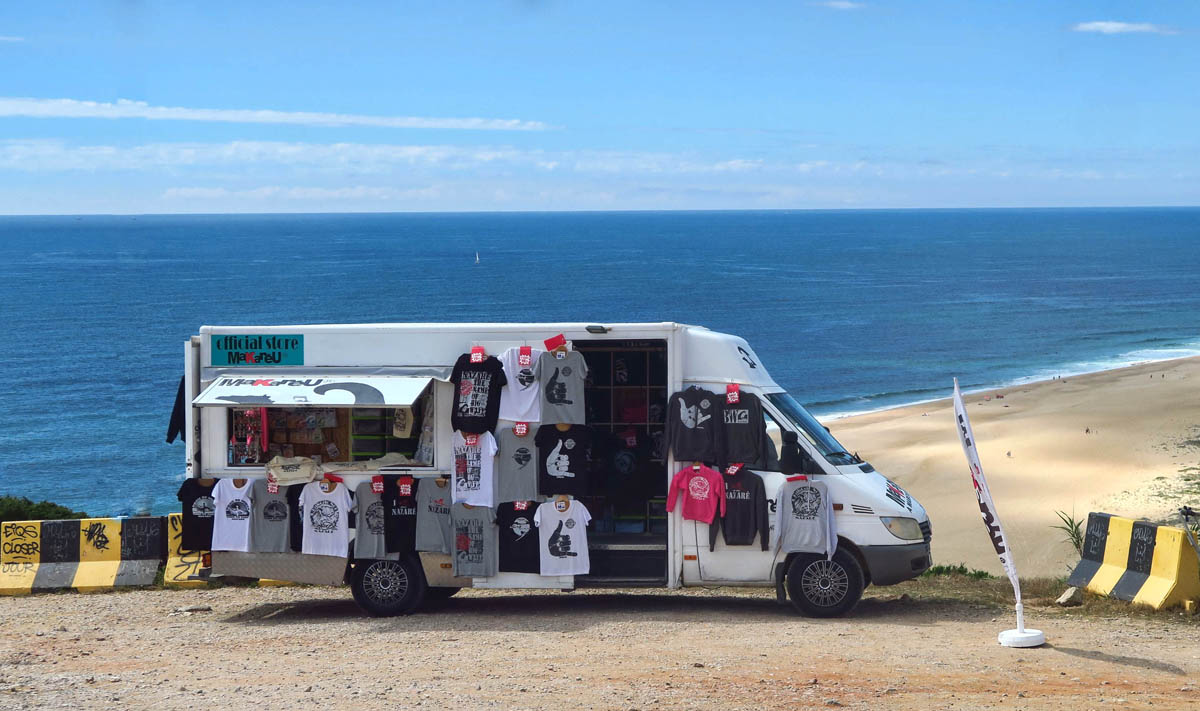 On the walk to the lighthouse, I encountered this tee shirt truck selling all types of surf-logo memorabilia. I thought it was a pretty clever idea, as it’s probably more profitable than selling tacos. 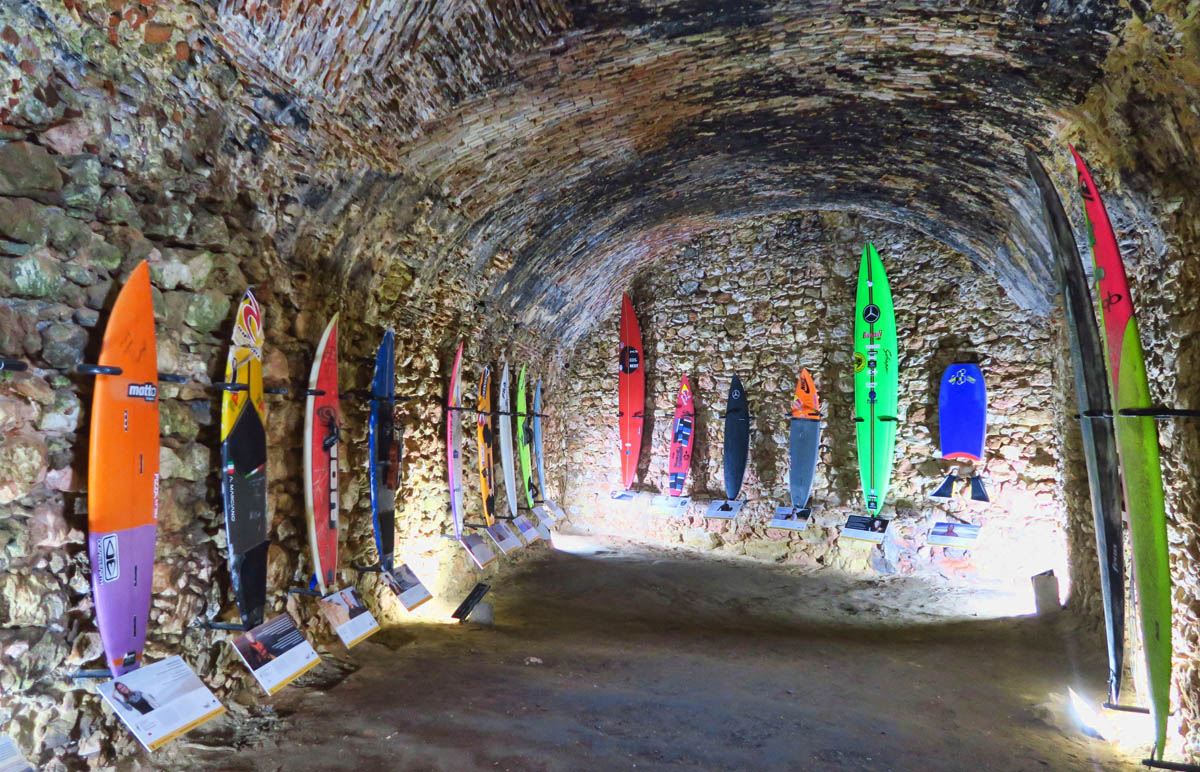 The inside of the old fort has been converted into a Museum of Surfing, with all types of boards donated by previous championship winners.

Interesting to see the gear worn to surf these giant walls of water. Check out the padding/flotation on this wetsuit. 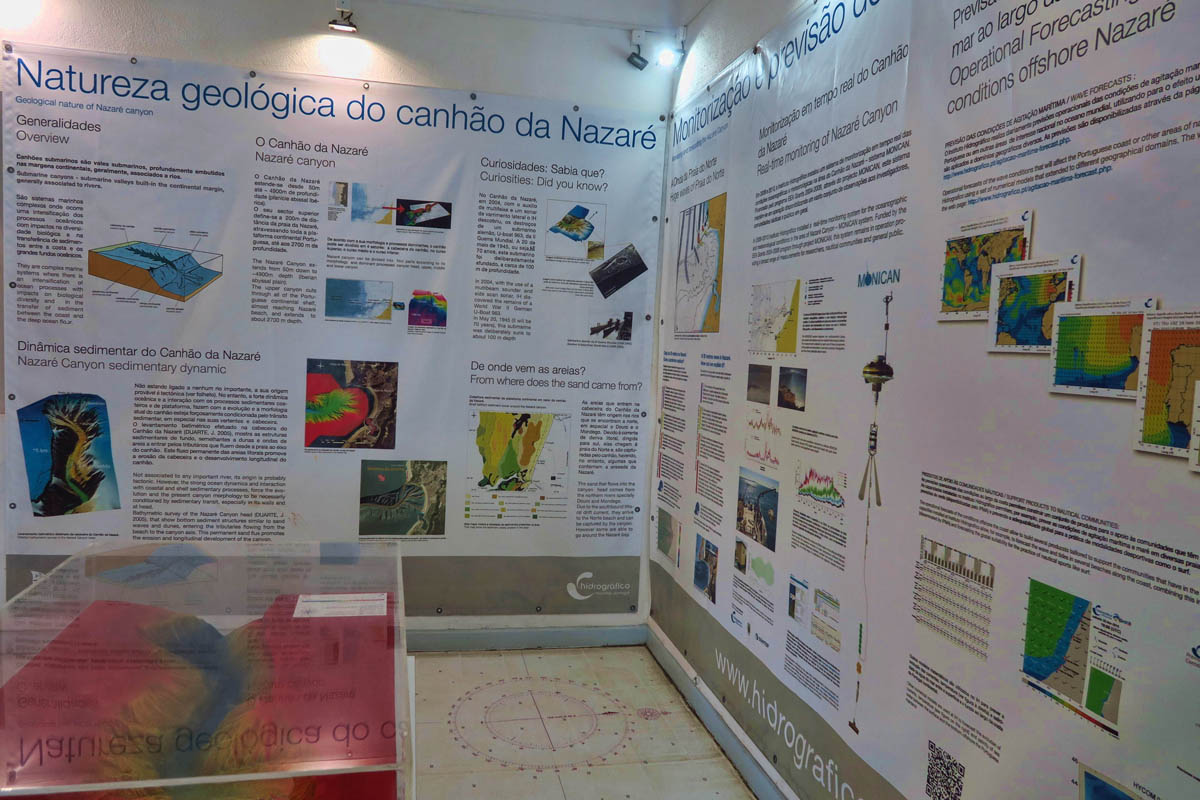 The museum has quite an expansive display and explanation of the Nazaré Canyon. 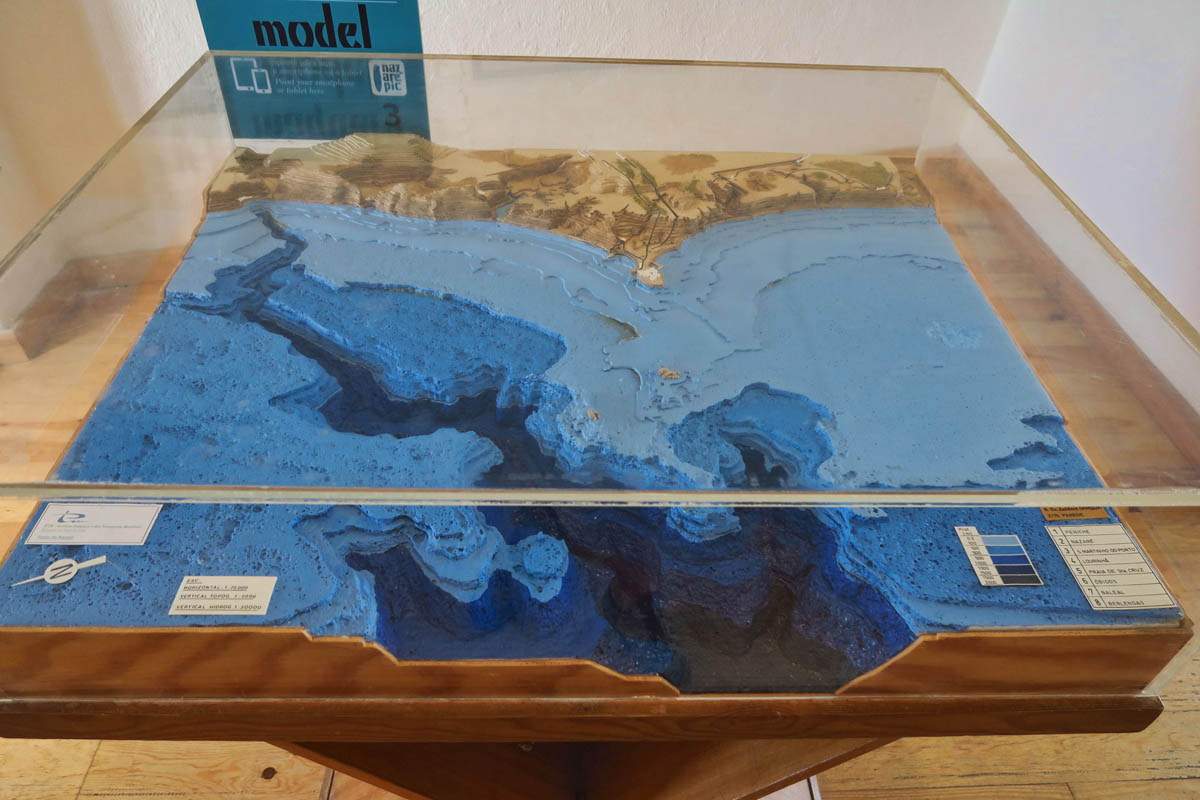 Here is a diorama of Nazaré Canyon, the big wave generator. It is 16,400 feet in depth – to give you some contrast, the Grand Canyon is around 6,000 feet deep at its lowest point.

Viewing photos of the giant waves on youtube, crashing on the promontory just beneath the lighthouse looks phenomenal! Makes me want to go back in winter to see what Forbes Magazine article called “The Greatest Show on Earth!” (If you have an interest in seeing what these massive waves look like in winter, there are enough videos on youtube to whet the appetite of adrenalin junkies among us.) 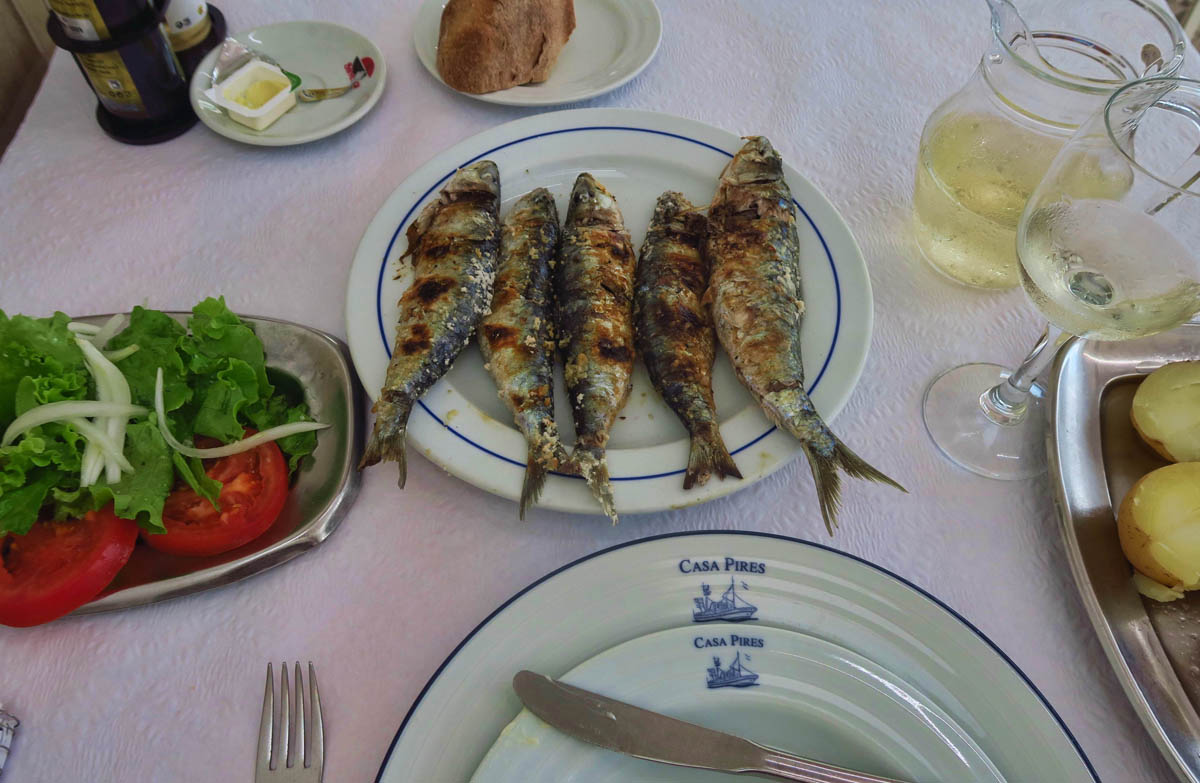 And just in case like me, you have not yet had enough grilled sardines… 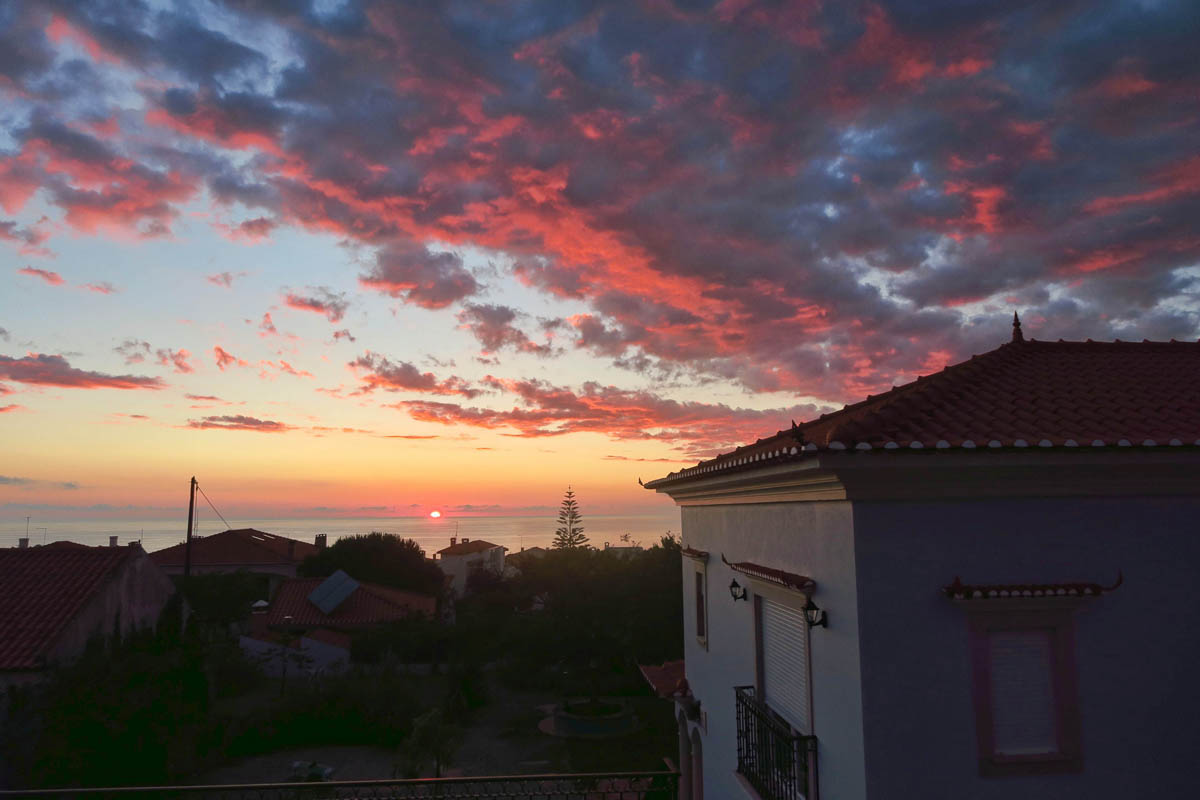 My unplanned stop in Nazaré ended up being one of my favorite stops along the coast.