I am really losing my patience with this “No Photos!” rule that seems to be growing almost as rapidly as the “No Overnight Parking” signs in Walmart. What is it about advertising a famous landmark, structure, exhibit, and then posting the entrance with “No Photographs Allowed!” What is the reason behind this, do you reckon? ? Do personal amateur photos posted on social media such as Instagram, Facebook, or personal blogs eat into the profits of the exhibit? In fact, the opposite has been proven. Is it an attempt to control traffic flow, so smartphone photographers are not tempted to stand in the aisles while focusing, editing, tagging, and uploading their latest status? Is there fear of damage being done from swinging selfie-sticks? Or is it just a way to sell more postcards? 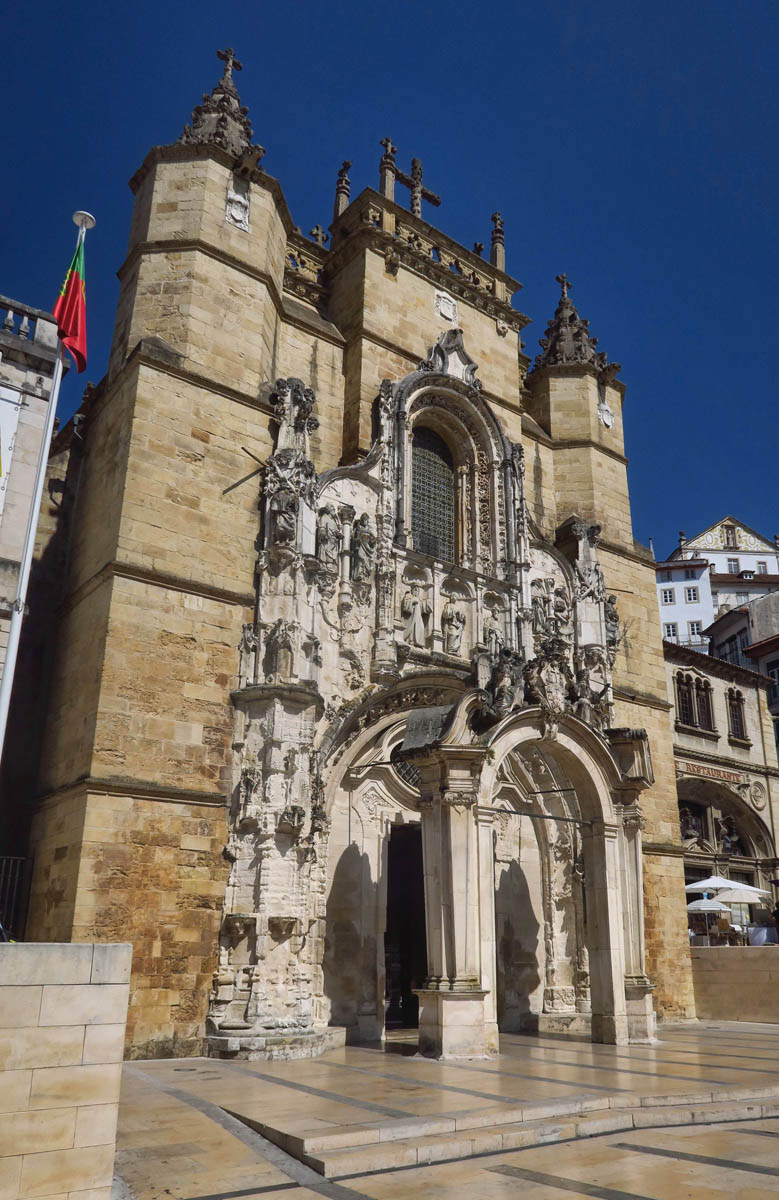 Monastery of Santa Cruz, manualine-style architecture along the main street of the lower part of the city. Remains of Portugal’s first king are entombed here. 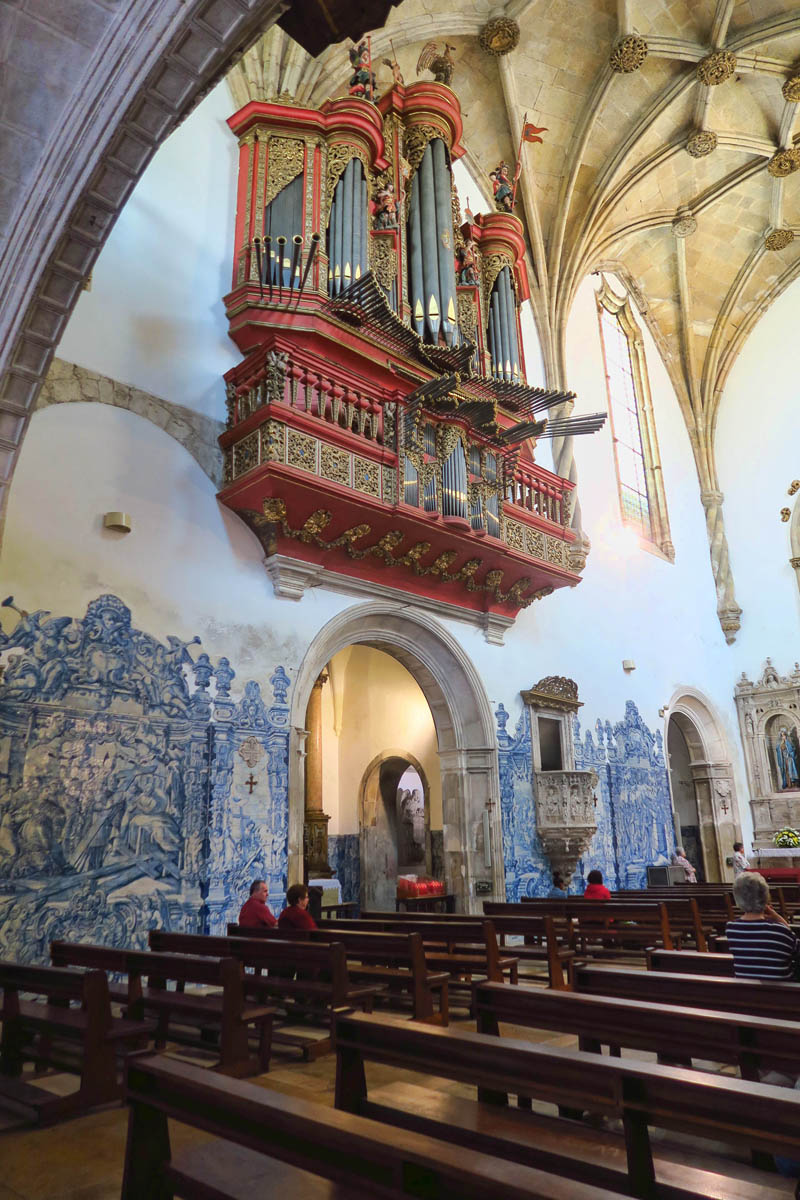 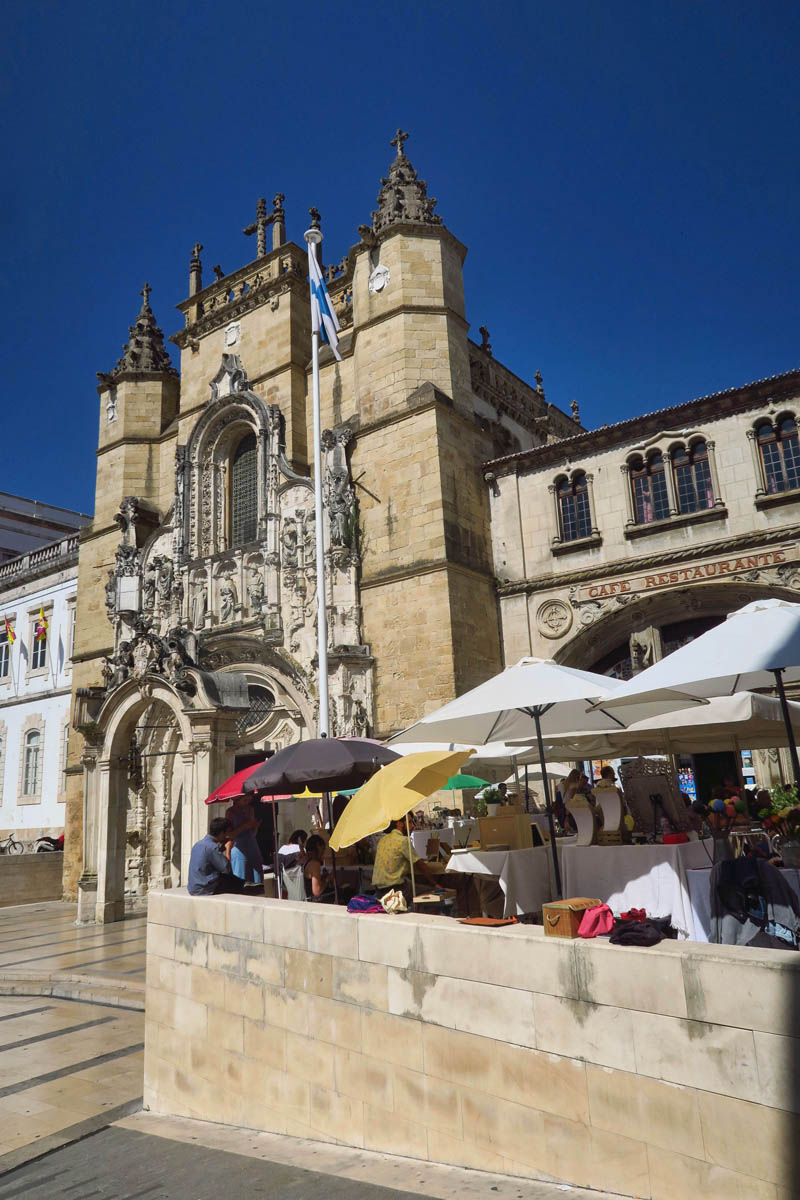 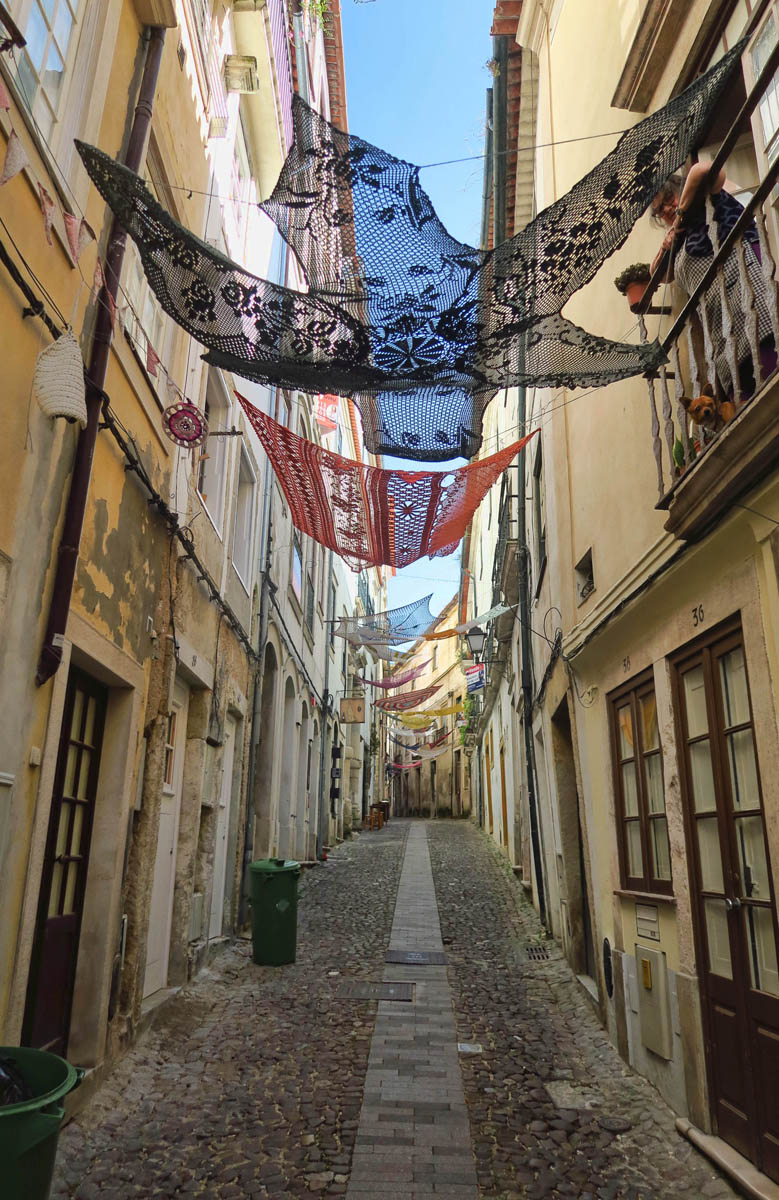 Beautiful crocheted netting is hung over the walking streets for shade. 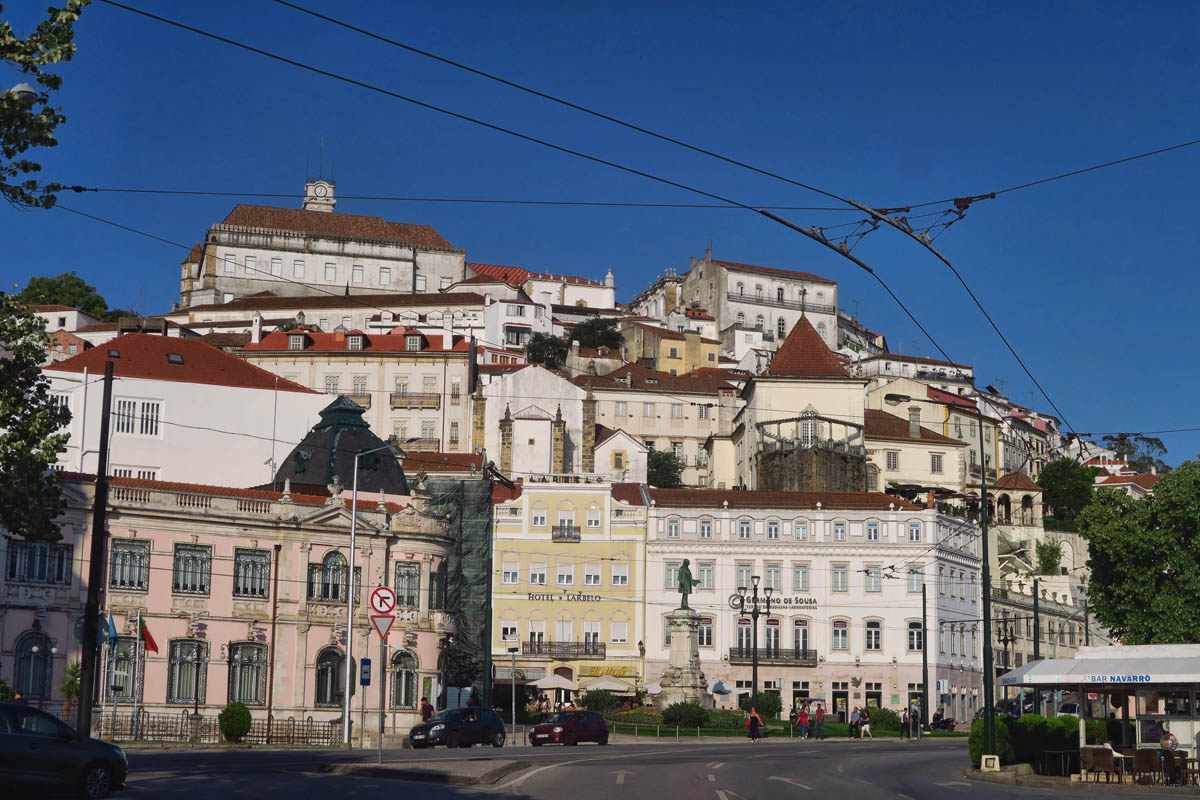 Coimbra is built on a steep hill, with the lower part of town facing the Mondego River, while the University occupies the higher “Uptown” neighborhood.

And then I must ask myself, why is not being able to take photographs of a destination such a big deal? Why won’t a cheap postcard or “web photo” suffice in preserving my memory? Because for me, my photography, while amateur, is deeply personal. When I take a photo, I often will study the subject matter, considering what I believe to be the best angle. I consider the aspect, focal point, etc. etc. Therefore, once I have taken the photo, I can remember all aspects of the process, right down to where I was standing. I capture not only the image, but the memory. It’s not just visual, but also visceral. 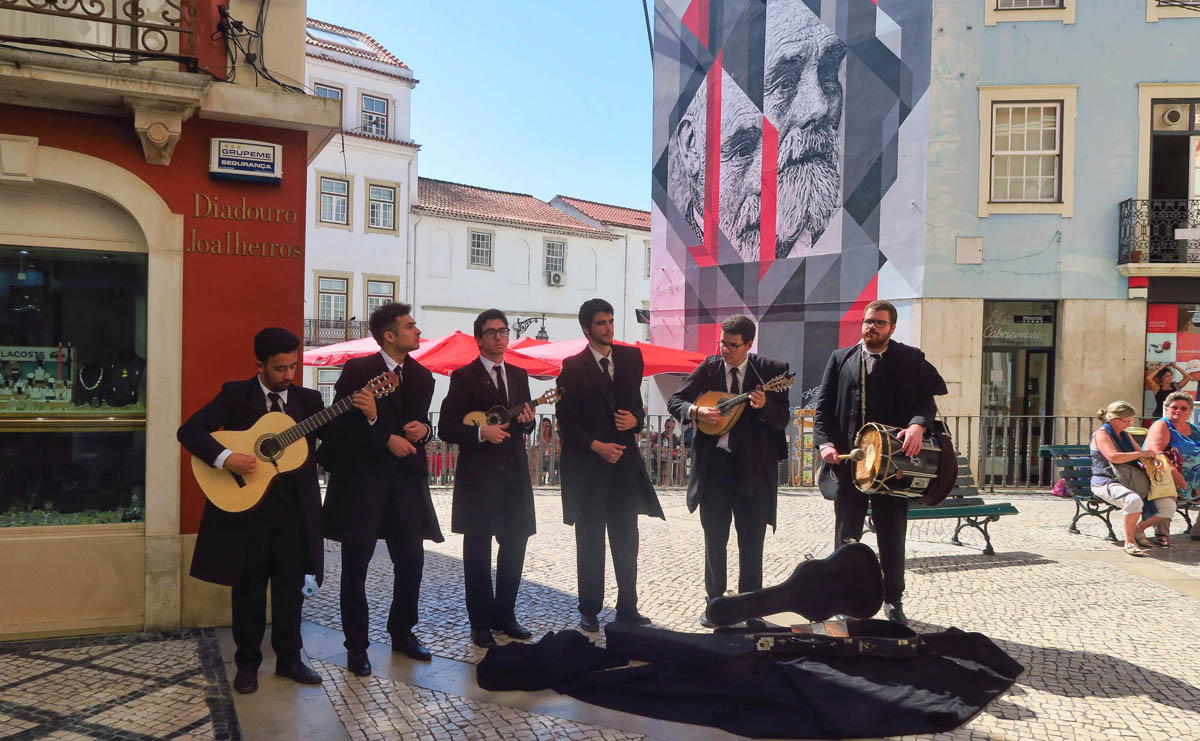 Fado, a Portuguese style of singing is very popular here. Whereas Fado singers in Lisbon are typically female, the Coimbra style is always sung by males. Academic traditions of the University of Coimbra draw from the troubadour tradition of medieval times. 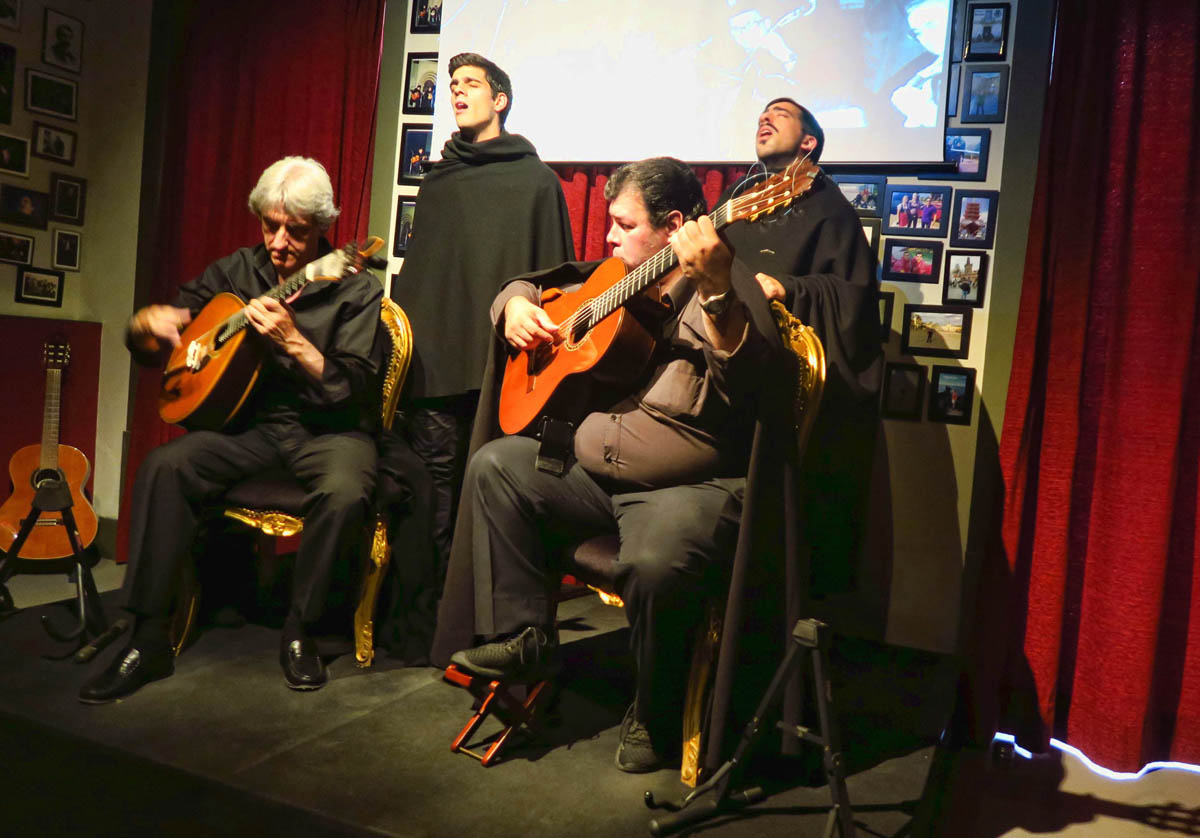 There is a nightly concert held at 6:00pm at Fado ao Central, the Cultural Center. 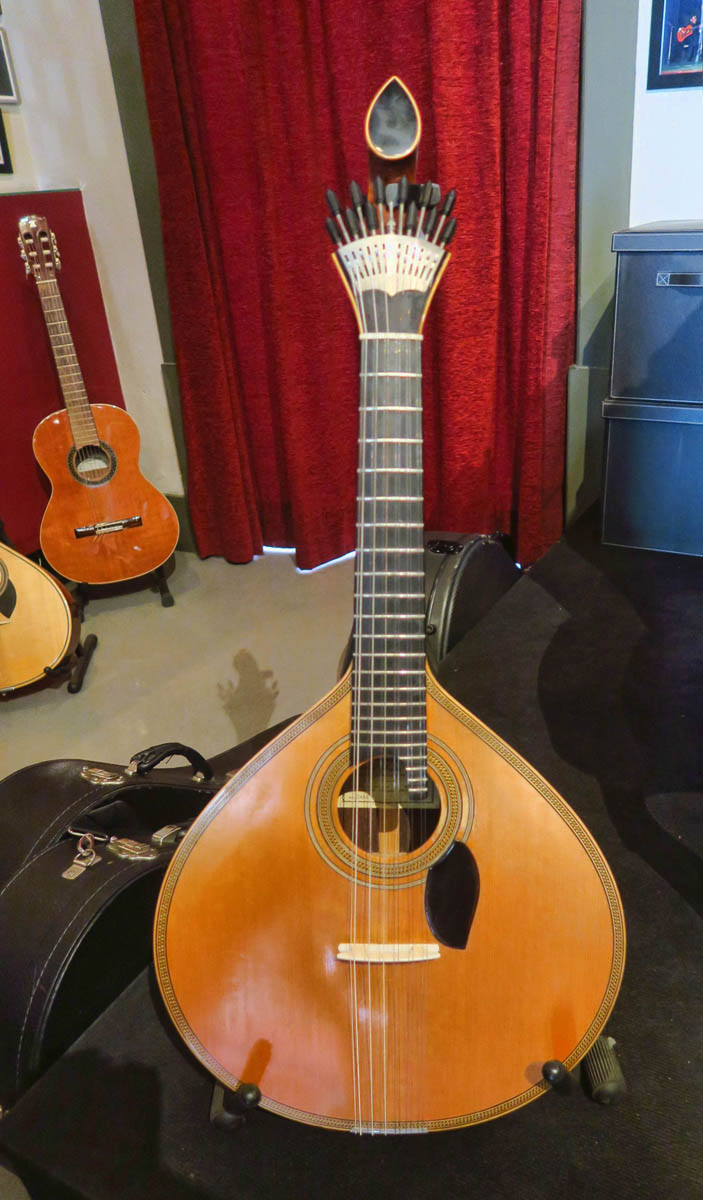 This is a “guitarra portuguesa,” or Portuguese guitar used to accompany Fado singing. The teardrop-shaped motif at the top indicates it is a “Coimbra-style” versus the snail-motif “Lisboa style.” 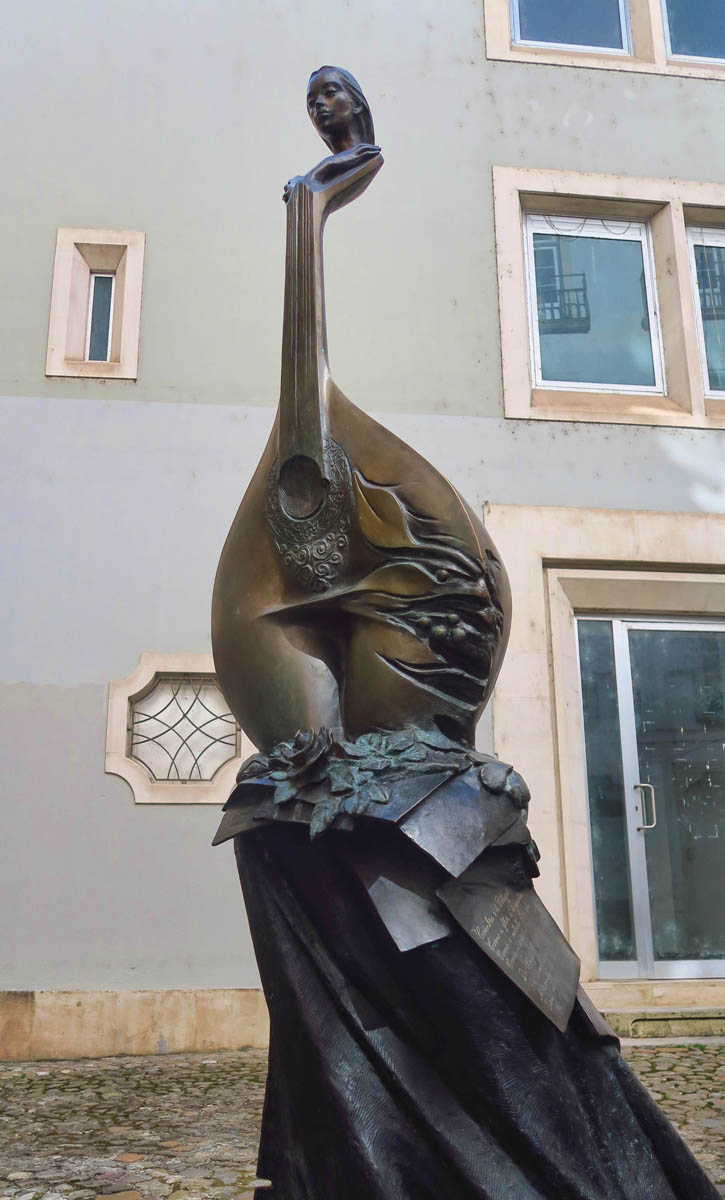 This beautiful sculpture is dedicated to the guitarra portuguesa, made in the image of a woman. 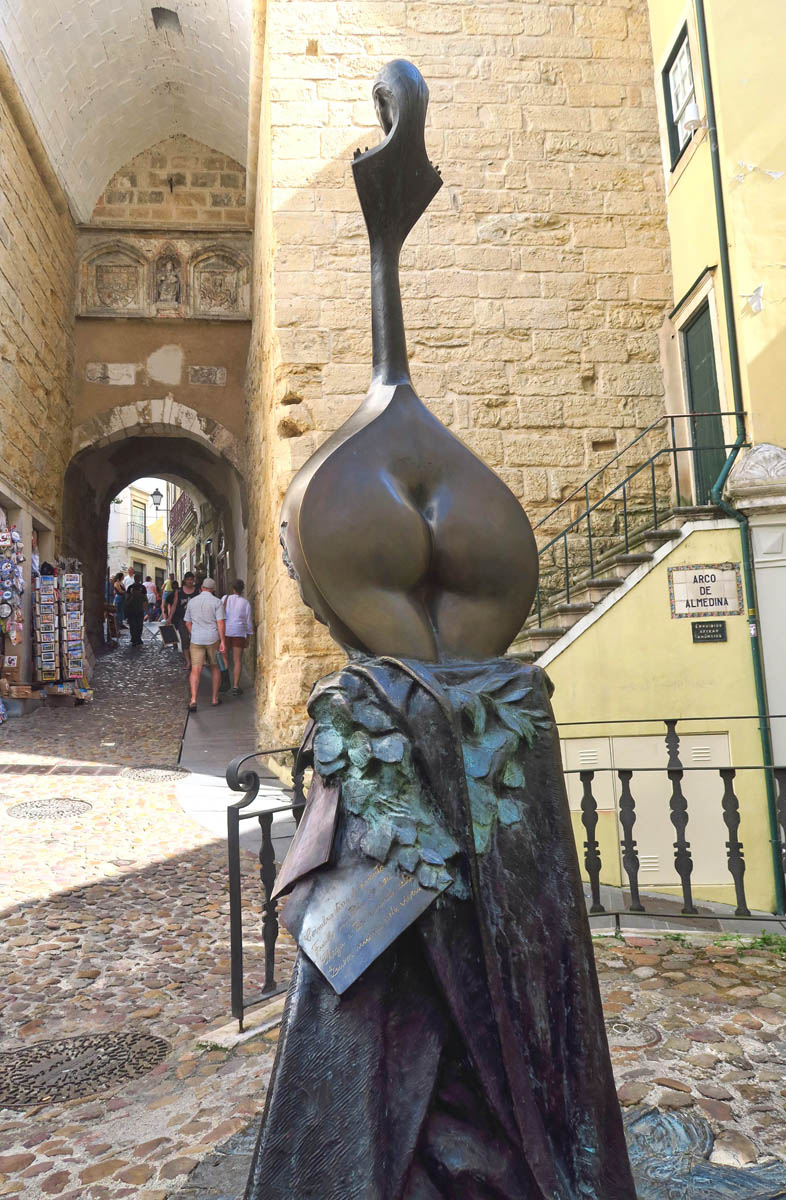 The backside of the sculpture with the arch of the old city wall in the background.

I planned a stop in Coimbra for one reason, and one reason only. I love libraries, especially antique or historic libraries. And Coimbra University has one of the most famous old world libraries in the world, the Joanina Library, or Biblioteca Joanina.

The University itself is the oldest in Portugal, its origins traced back to the 13th century. It is responsible for Coimbra earning its nickname, “A cidade dos estudantes,” or “The city of the students.” Originally founded in Lisbon in 1290, the University was relocated several times until it was permanently established in Coimbra in 1537. Sitting atop the highest hill in the city, the University dominates the upper city section overlooking the Mondego River or the Rio Mondego. It was inducted into the UNESCO World Heritage in 2013. 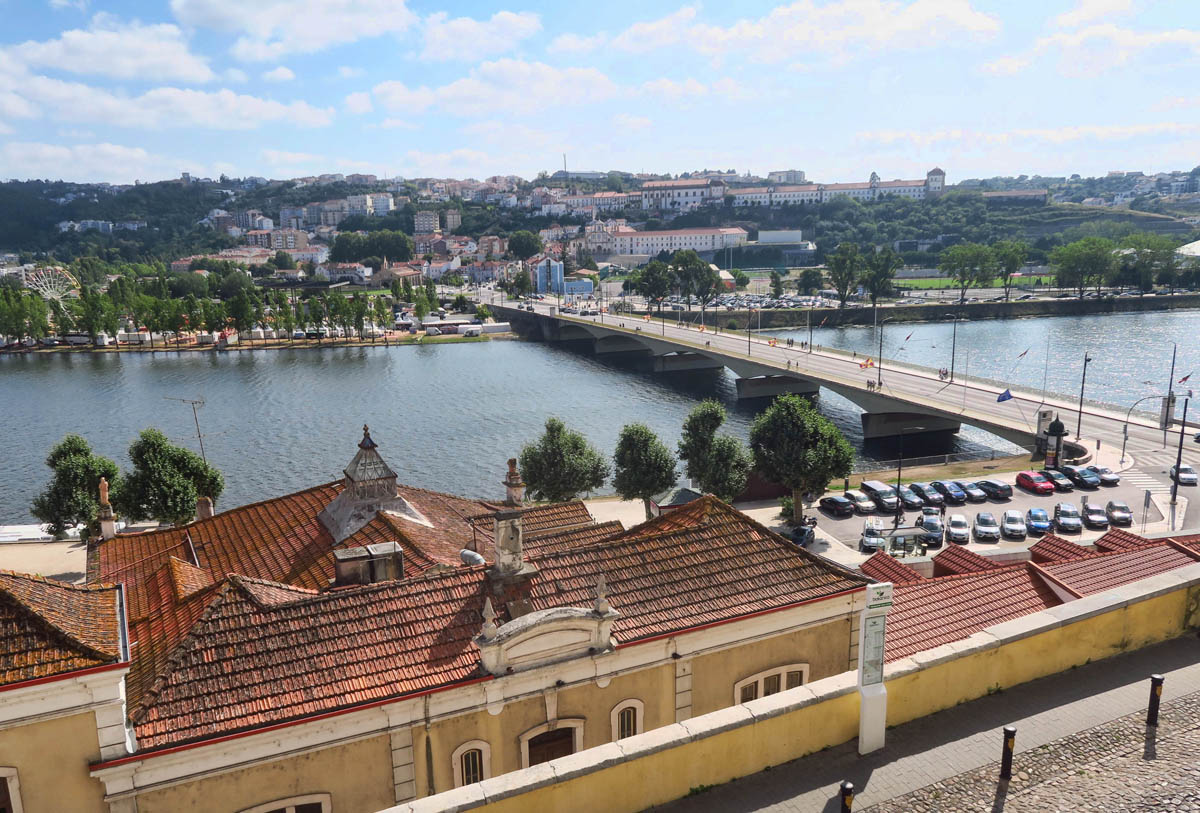 The University is located in “Uptown” overlooking the Mondego River. 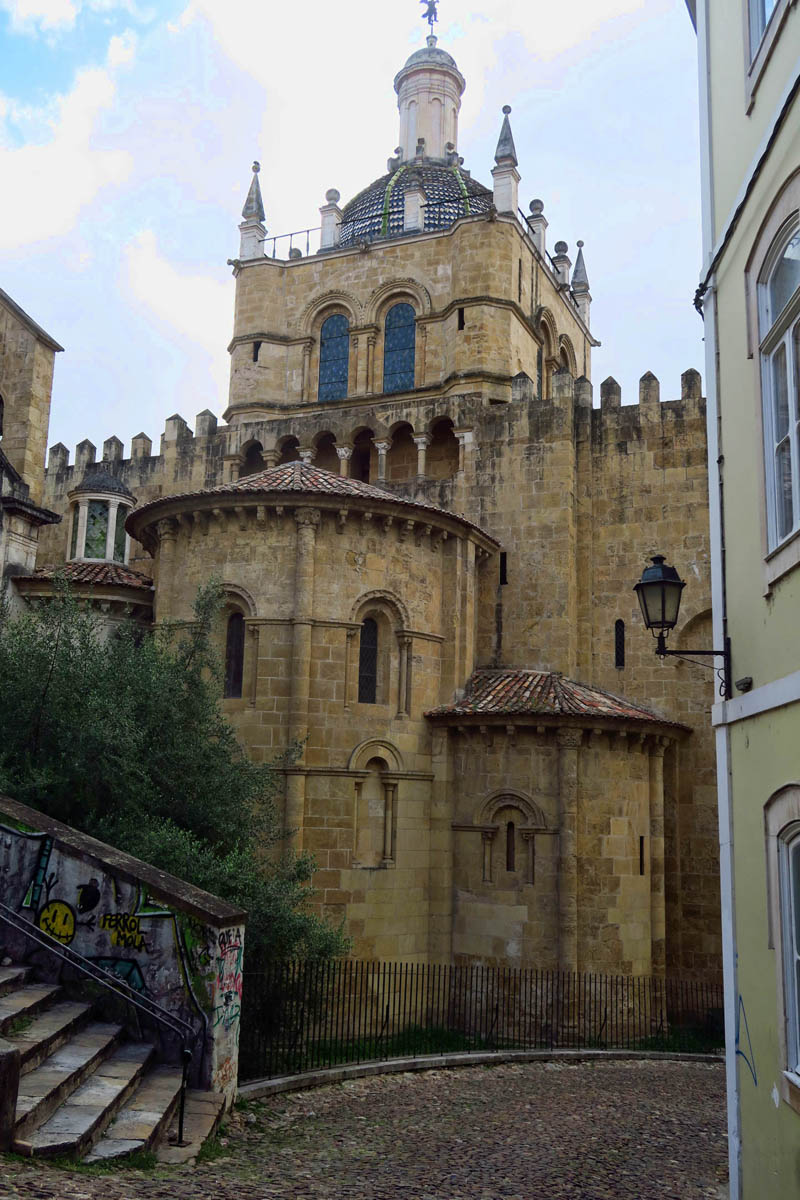 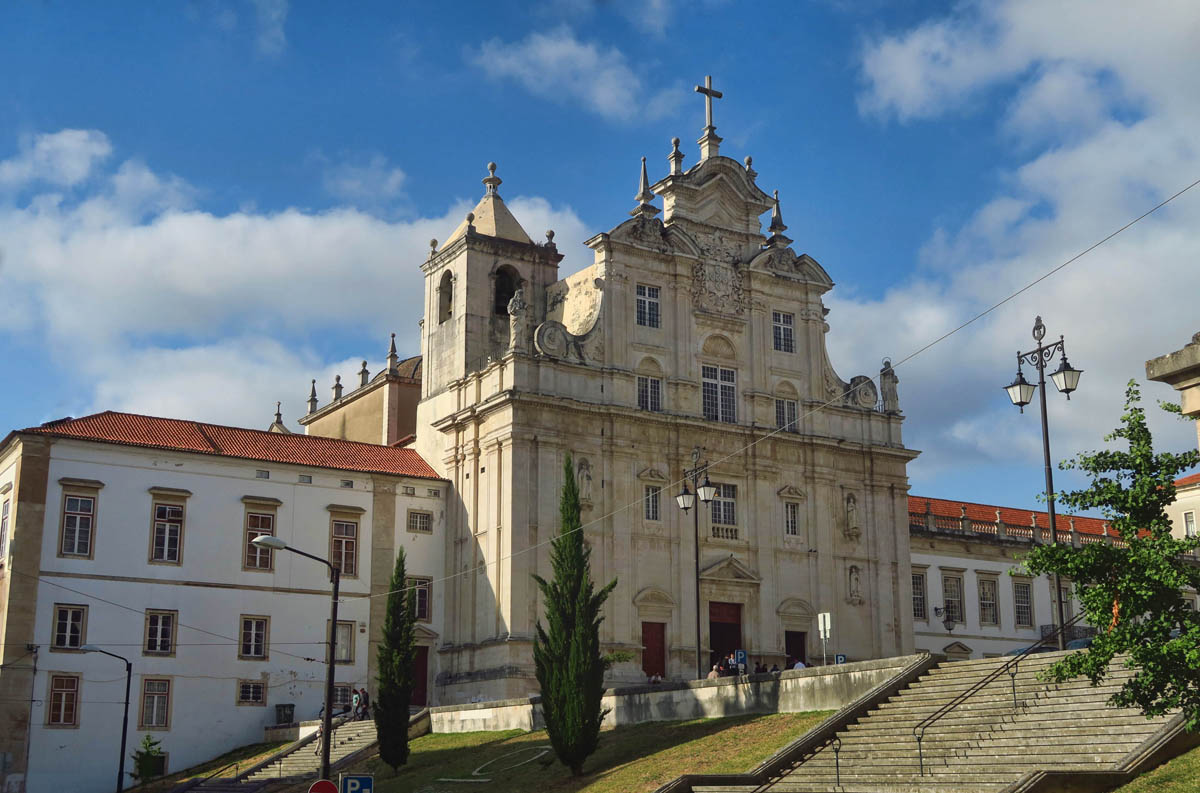 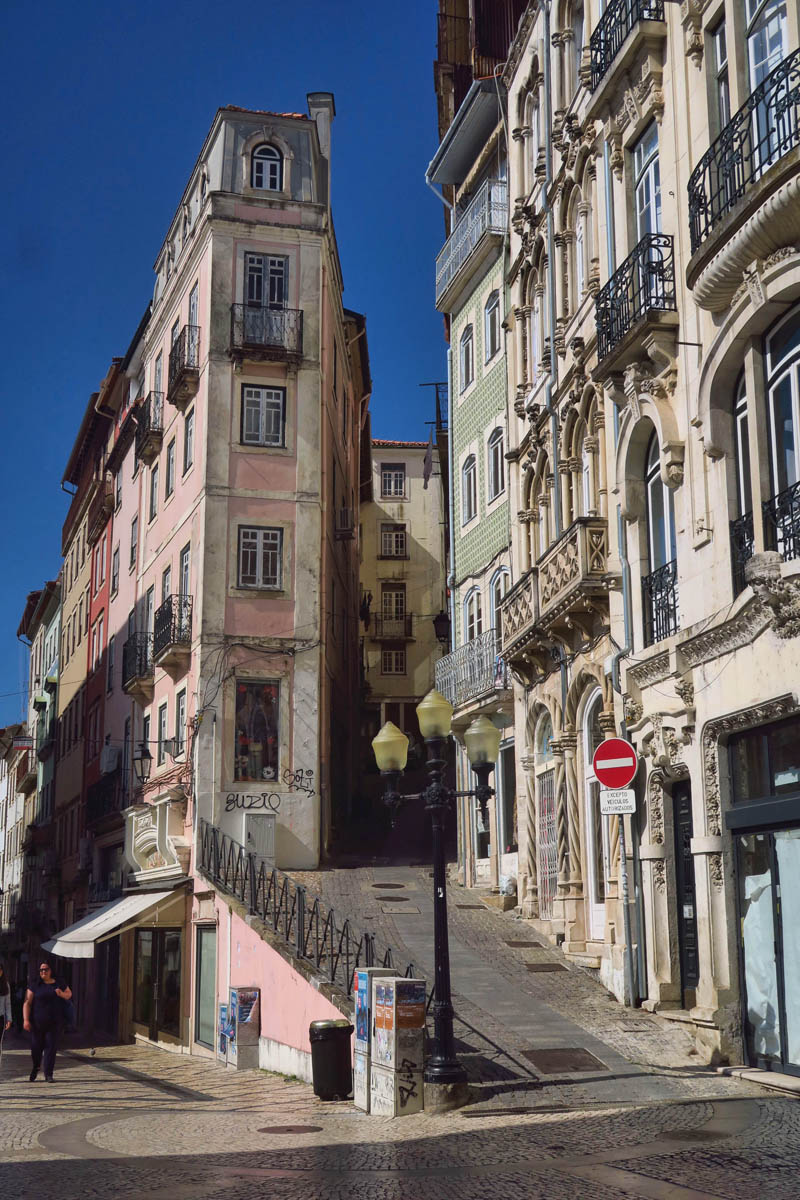 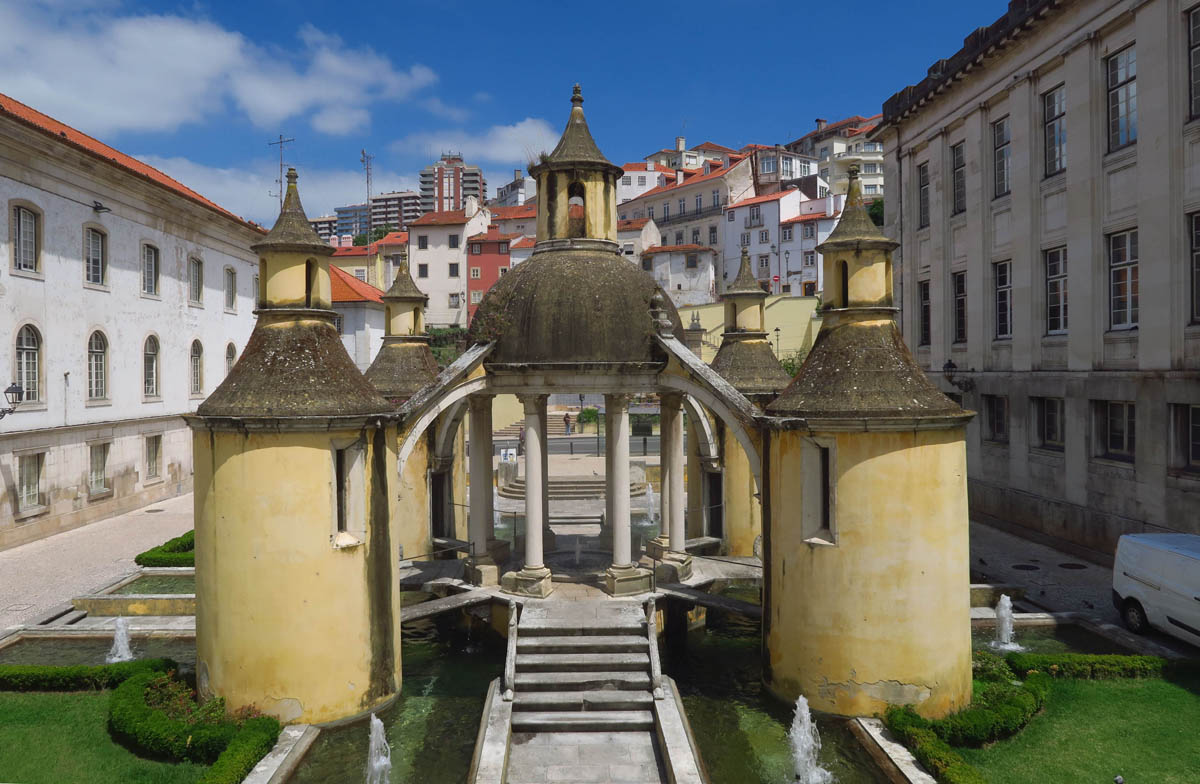 Fonte Nova, or “New Fountain” has been here in some form as a water source since 1137, though current form was built in 1725. 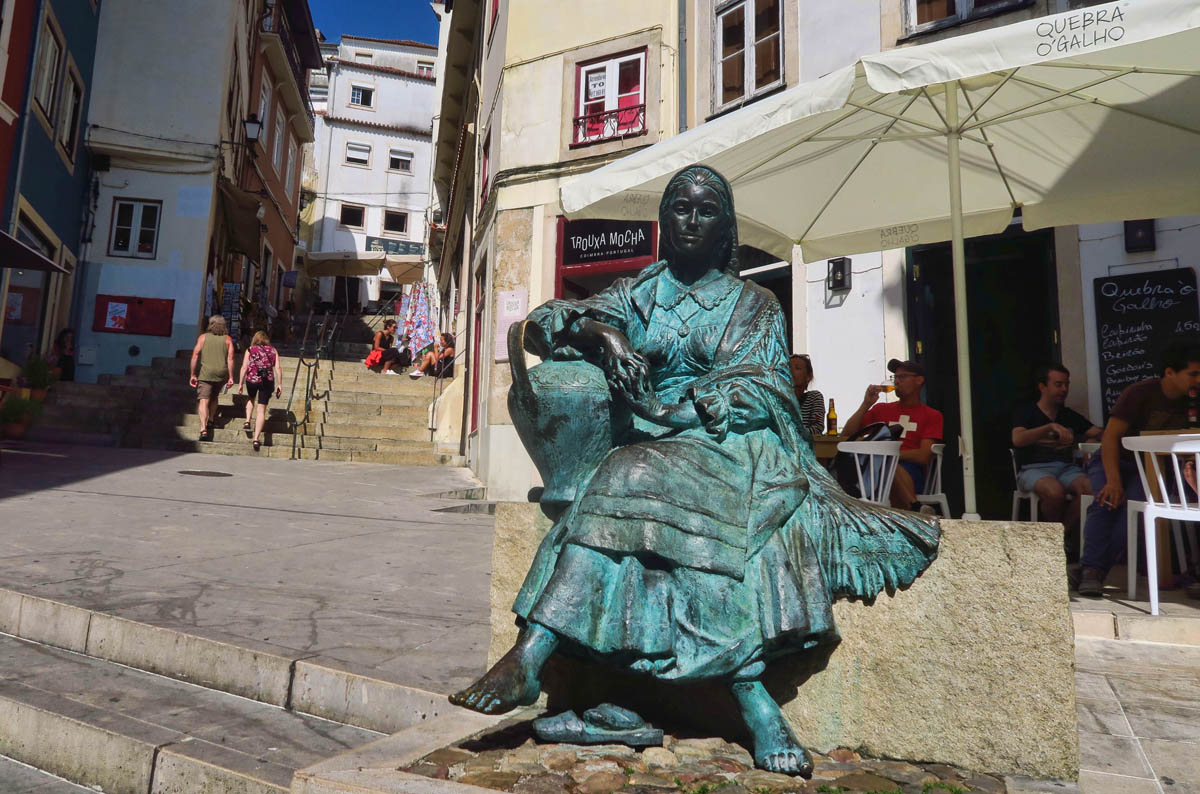 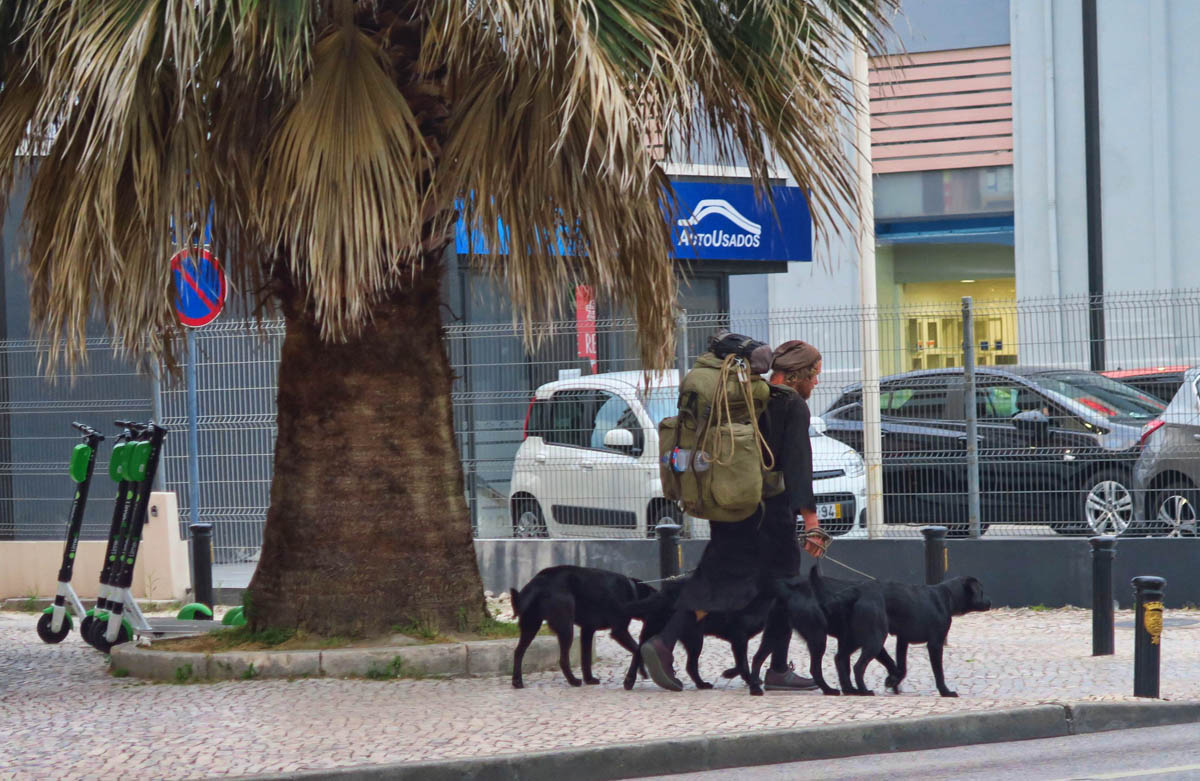 I was fascinated by this backpacker with the four identical dogs. Would loved to know the story. He was wearing a long robe, so maybe some kind of performer? He must have had to carry the backpack for all their food! 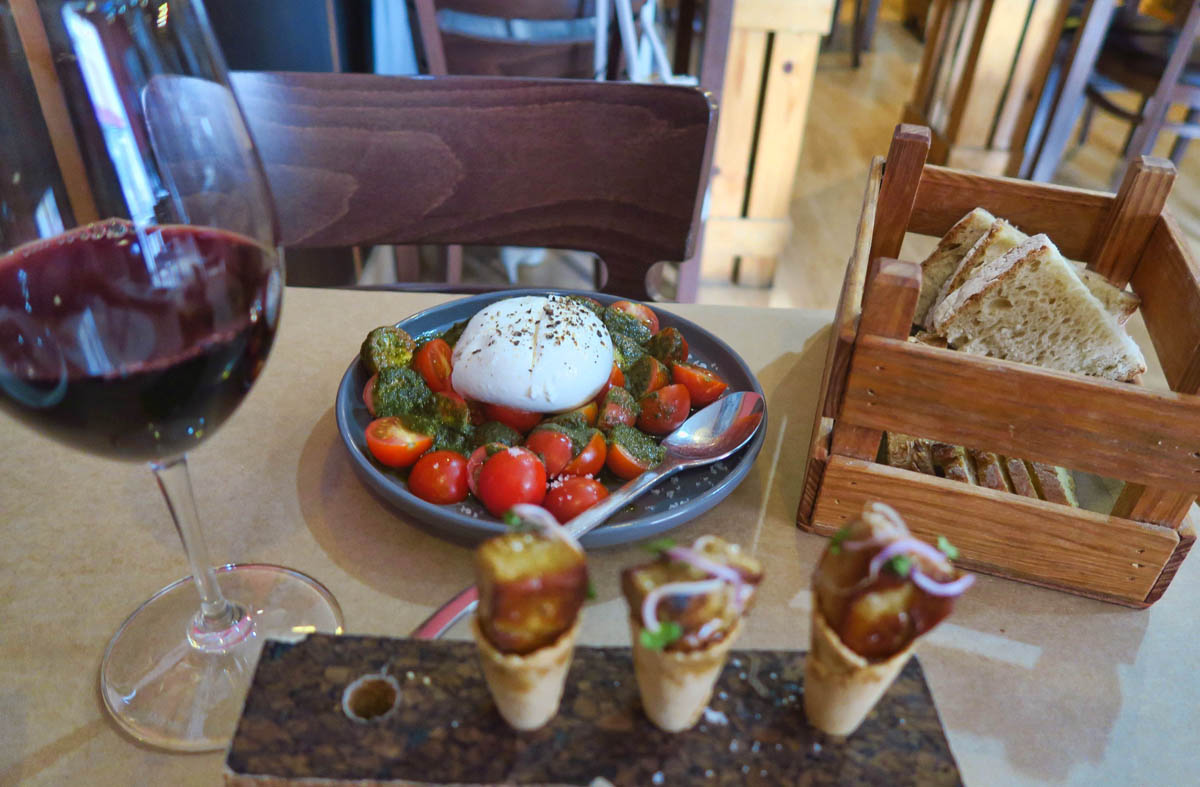 Within the grounds of the University are many historic buildings, the most famous of which is the Joanina Library which I have come to see. Named after King João V, who sponsored its construction between 1717 and 1728, the tour brouchure advertises “a remarkable central hall decorated with elaborate ceiling frescoes and huge rosewood, ebony and jacaranda tables. Towering gilt chinoiserie shelves.” I booked a tour of the University with plenty of advance to insure access to the library, the only reason for my visit. The Baroque library is understandably the highlight of the tour. I paid extra for a guided tour with the promise of spending more time inside this historic structure. I was prepared to be “wowed.” So imagine my disappointment when I showed up to check in for my tour, and our stern, authorative tour guide told our group we would be required to put our cameras away once we entered the most significant building along the 20 euro tour!

The library is indeed stunning. Breathtaking. Even the name sounds beautiful. I wish I could remember it in greater detail, but fact is, I was so pissed off at not being able to take a few photos that I can hardly remember what I saw. Still, it is legendary, complete with its own colony of resident bats that live in the stacks and eat the Library Beetle larvae and silverfish that feed on the paper and glue of the leather-bound tomes dating back to the 16th century. 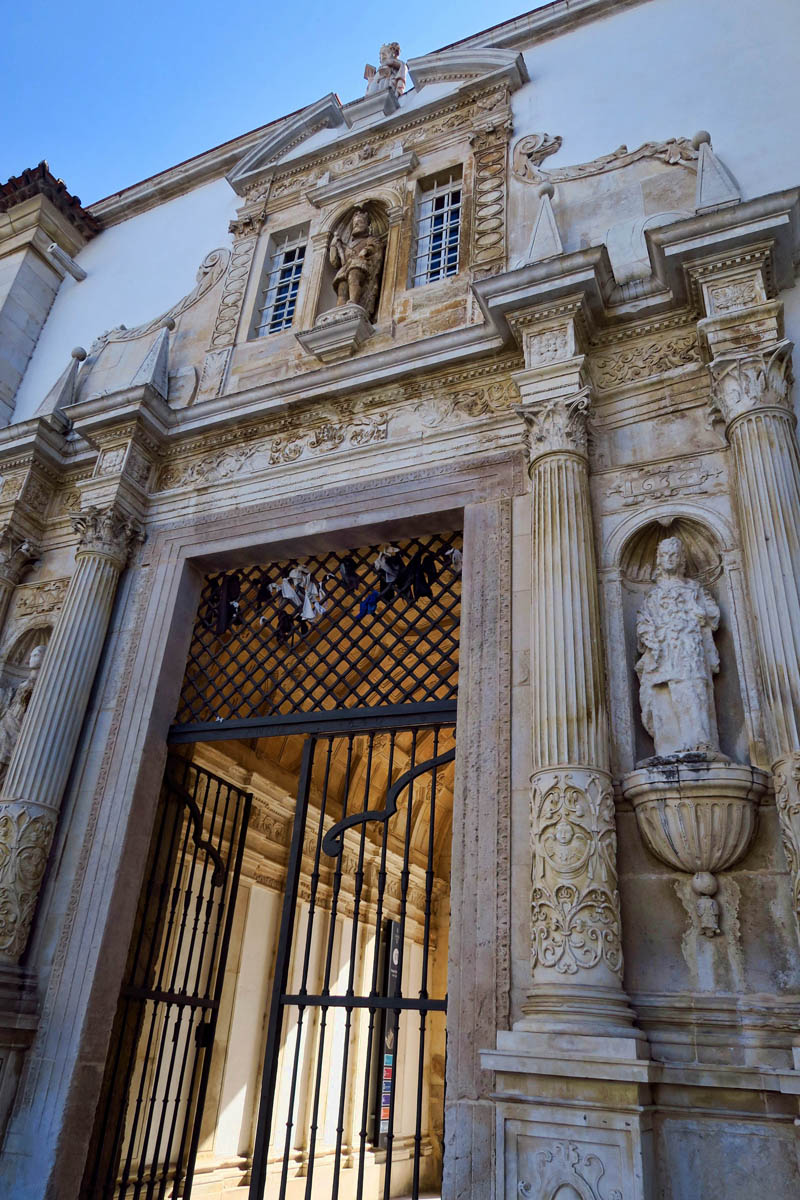 Main entrance to the University is through the “Iron Gate, once the entrance and exit to what was the medieval citadel. 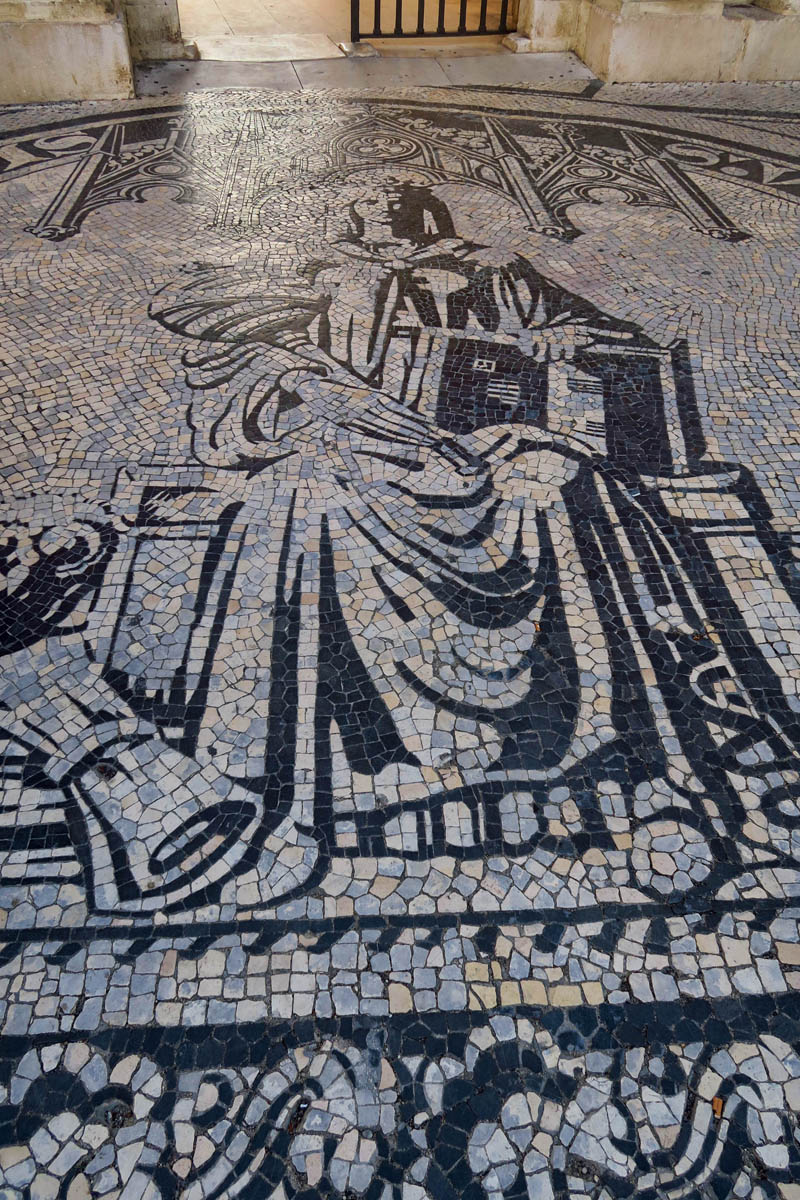 As one walks through the Iron Gate, they pass over the black and white tile mosaic of “Wisdom.” 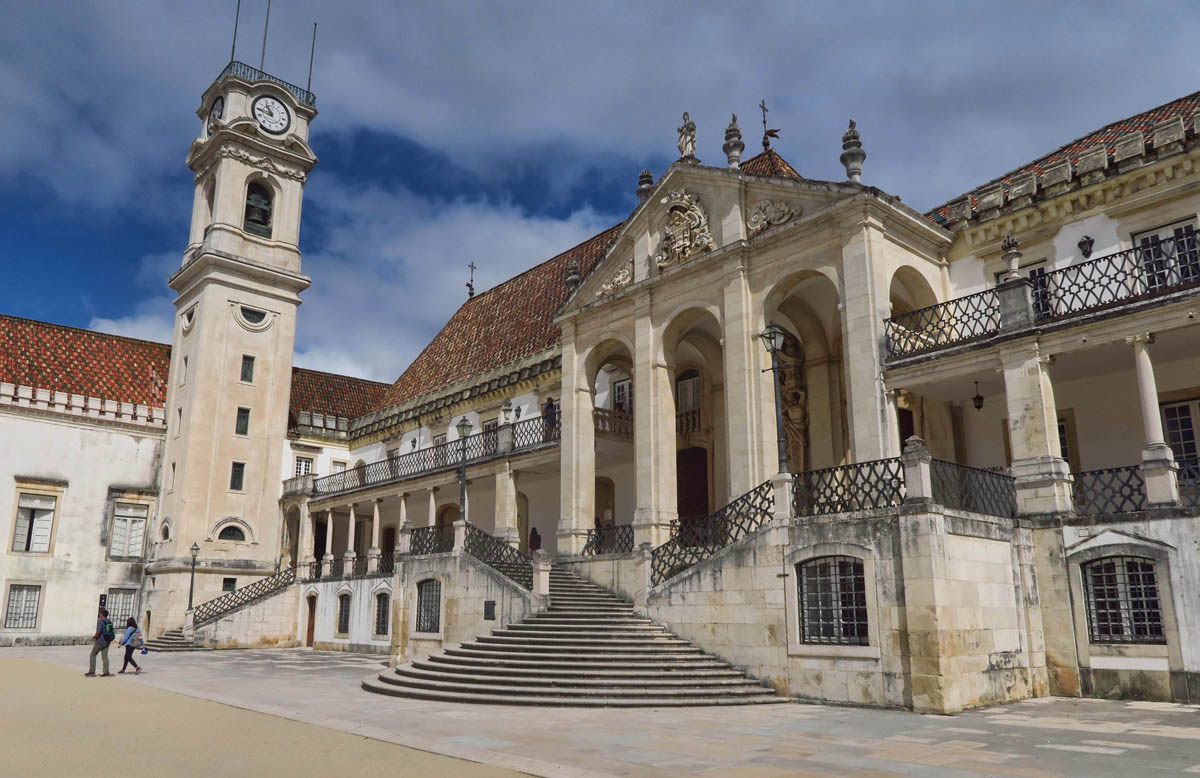 The heart of the University is the Pátio das Escolas, a vast courtyard. The Bell Tower dates 1728-1733. 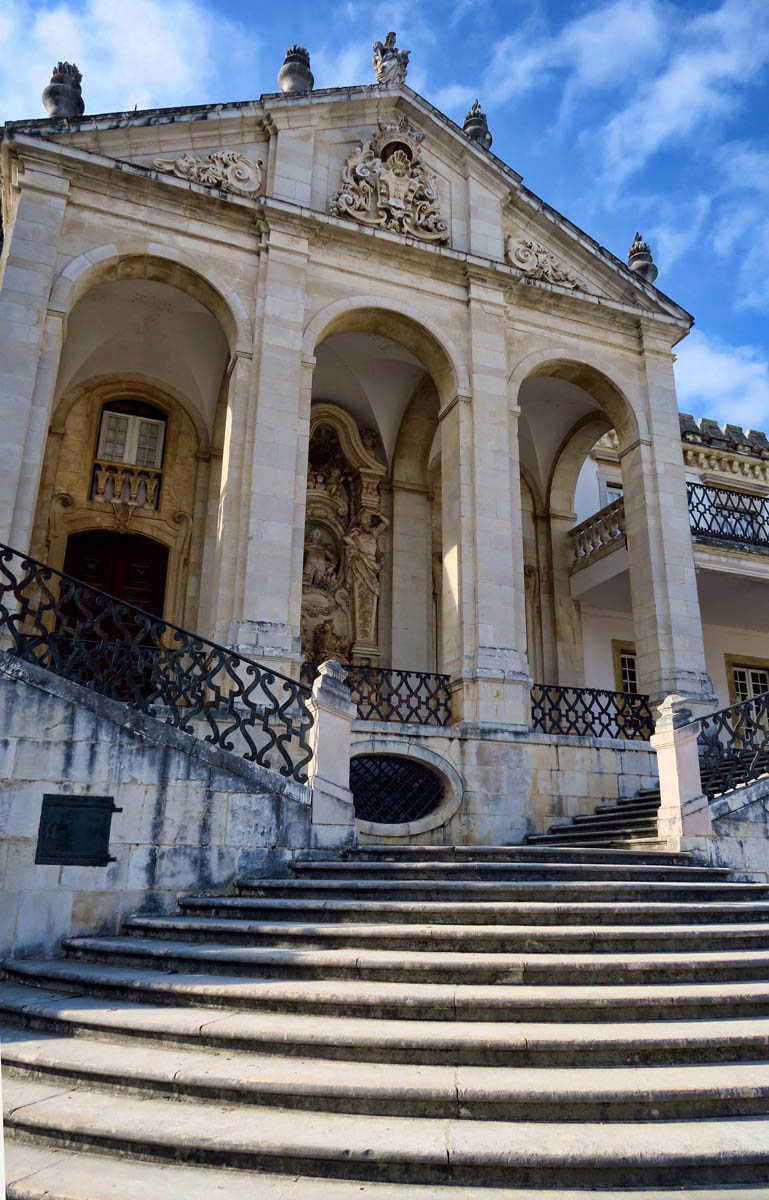 Before the complex was a University, it was King Alfonso Henriques’ residence in 1131, named the Royal Palace of Alcáçova. 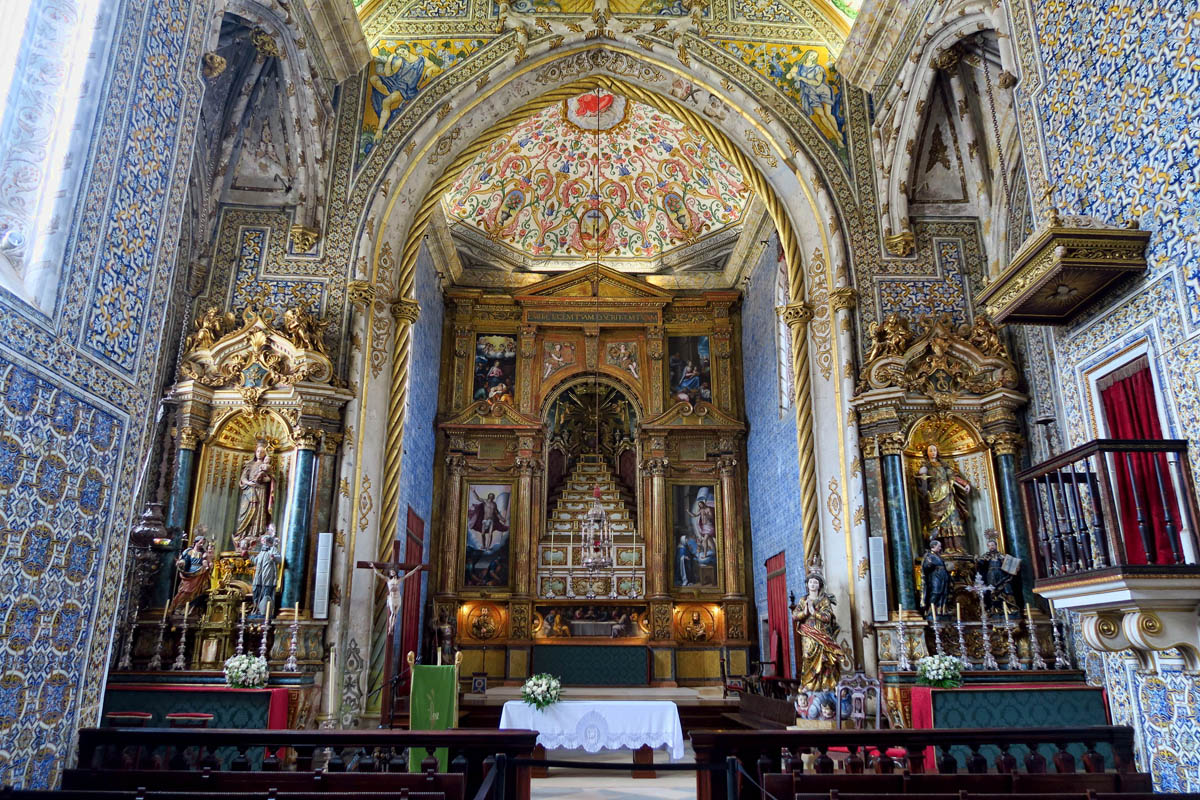 One of the buildings surrounding the courtyard is the Capela de S. Miguel, or Chapel of San Miguel, royal chapel dating back to 16th century. 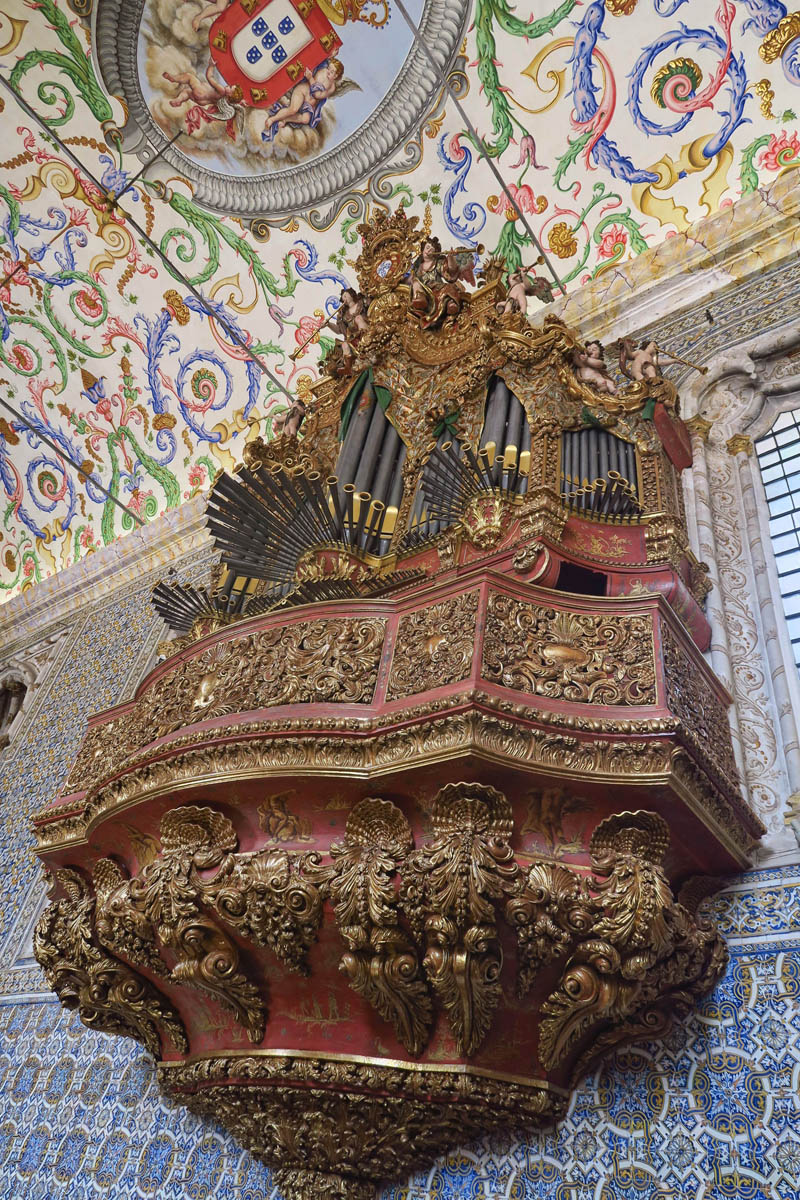 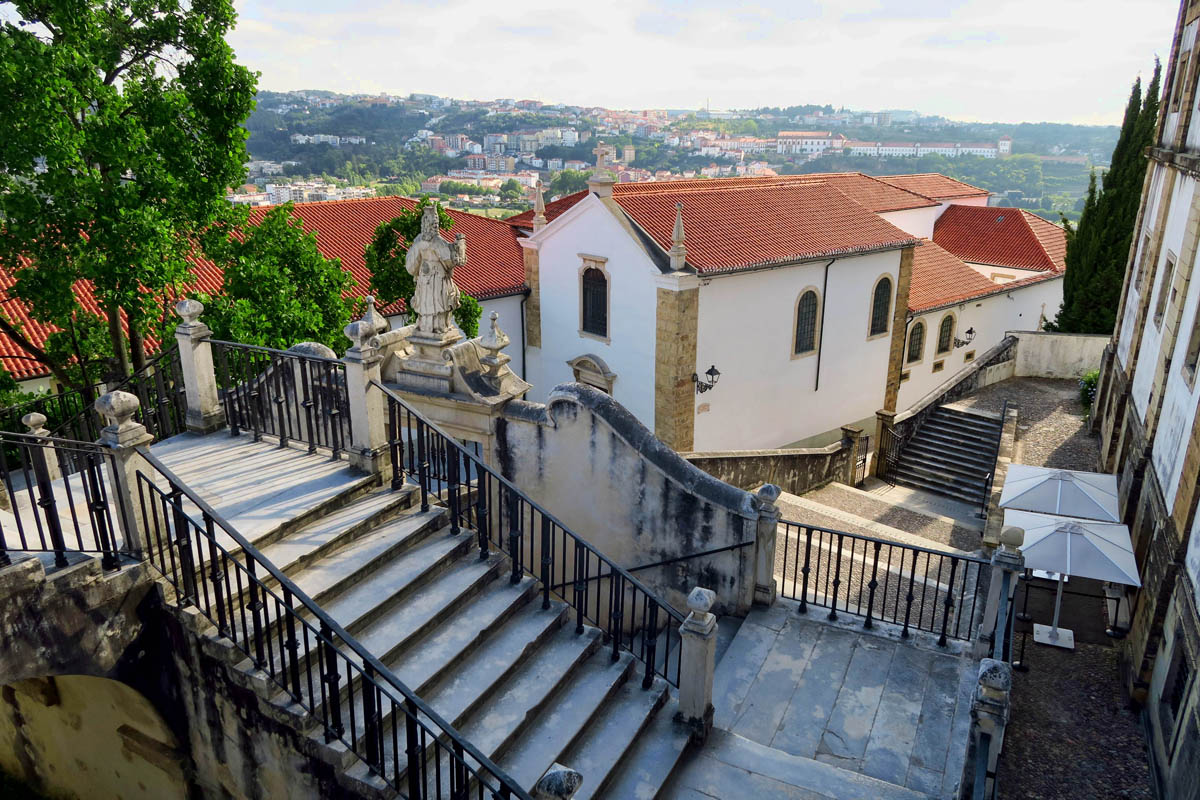 Double white umbrellas in courtyard below are entrance of “No Photo Zone,” the Joanina Library.

On an end note, in doing research to jog my memory and keep my facts straight for the purpose of this post, I learned that the historic Joanina Library was used as inspiration in the latest movie version of “Beauty and the Beast.” Perhaps a better way to protect the heritage and history of monuments such as this, as well as other monuments and destinations that have recently been closed due to over-tourism is for movie makers and music videographers to “do your own original work” when creating sets for production. Or don’t disclose, let alone publicize the inspiration behind the location. Rather than restricting the layman tourist from capturing a few vacation photos, stop calling out the locations as your “inspiration” in the making films, music videos, and travel listicles. If individual tourists are being forbidden from taking photos, then so should Disney.

I make it a policy never to post “web photos” on my blog.  If you see it here, it’s because I took it with my own naked eye.  But if you want to see the interior of the Joanina Library, the reason that compelled me to make a stop in Coimbra, there are plenty of photos on the internet to be googled for the taking.

15 thoughts on “No Camera in Coimbra”