There were many times throughout my two months in Portugal that I wished for a car, but none so much as while trying to figure out a way to tour the Douro Valley. Seems there are several ways to reach the area, but no affordable way to visit the many smaller vineyards once you get there. But as with the coastal road, I knew the stress of trying to navigate in a language I couldn’t speak or understand would negate any pleasure I got from being able to go my own way. The winding roads through the mountains and cobblestone alleyways through the villages would have required full focus on the road, with no “rubbernecking” to see the scenery, let alone sampling of the grape! 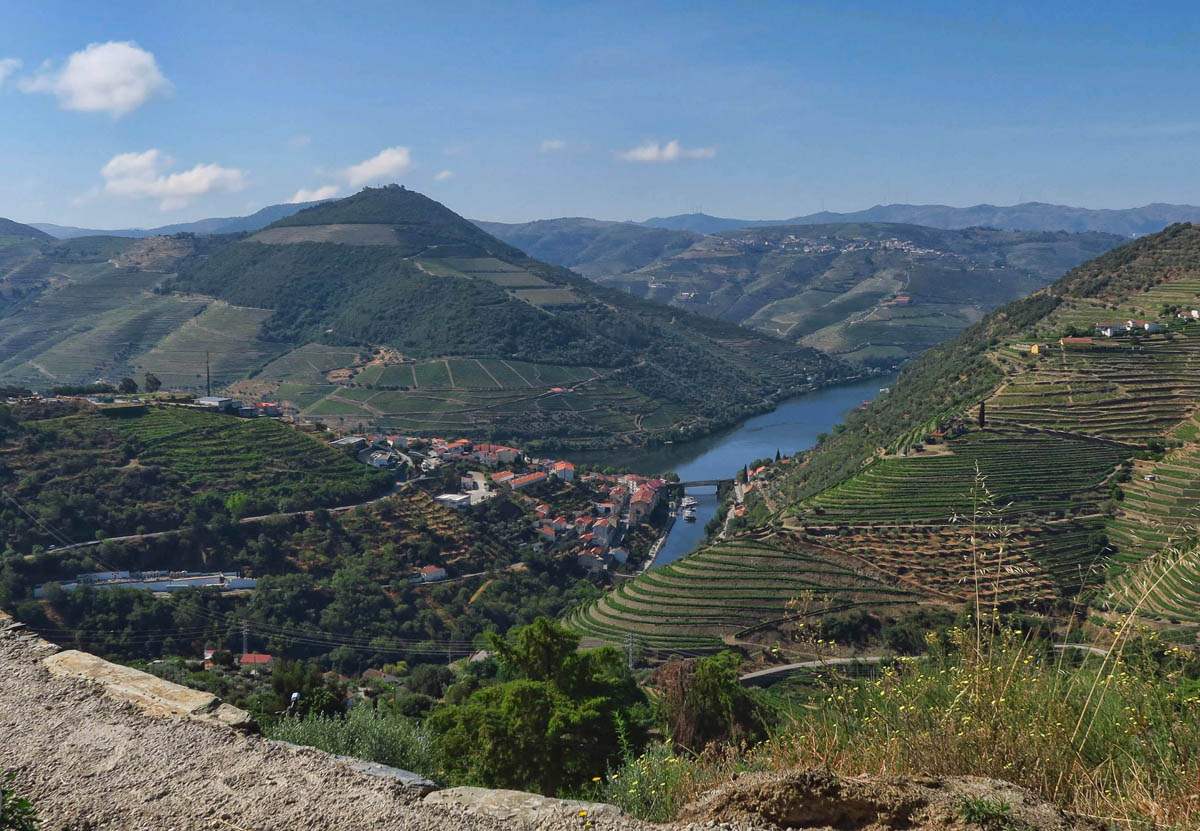 The drive into the Douro Valley is beautiful, with many viewpoints overlooking the Douro River. 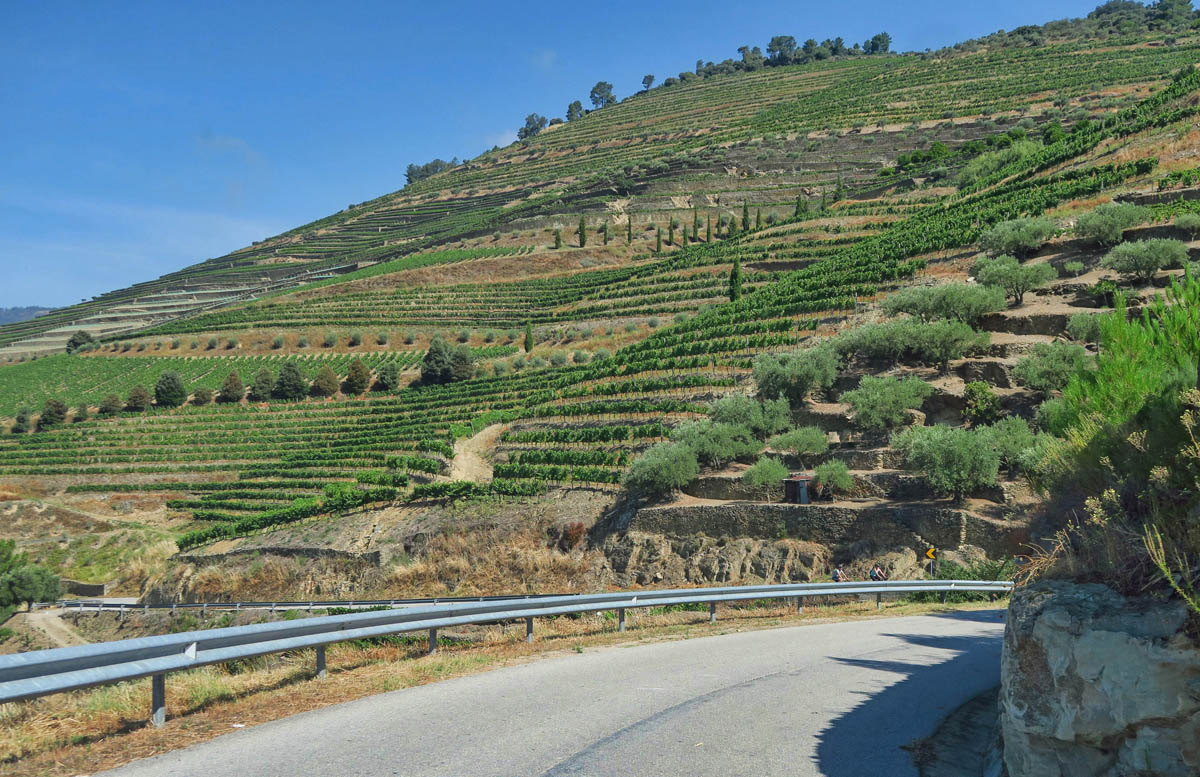 Hillsides are stacked with vineyards in every direction.

There is train service on the scenic Linha do Douro Railway into the valley. However, I found the hotels within walking distance of the station in the town of in Pinhão, the heart of the vineyard region, to be ridiculously expensive. And then there was still the matter of getting to and from the local wineries once I made it that far.

By now, I had come to trust the recommendations of Fabio, the host of my guesthouse. He had given me excellent advice on all things Porto, and hadn’t steered me wrong yet. So I went with his suggestion of booking a day tour with Cooltours, a small tour company in Porto that offered van tours to the Douro Valley. 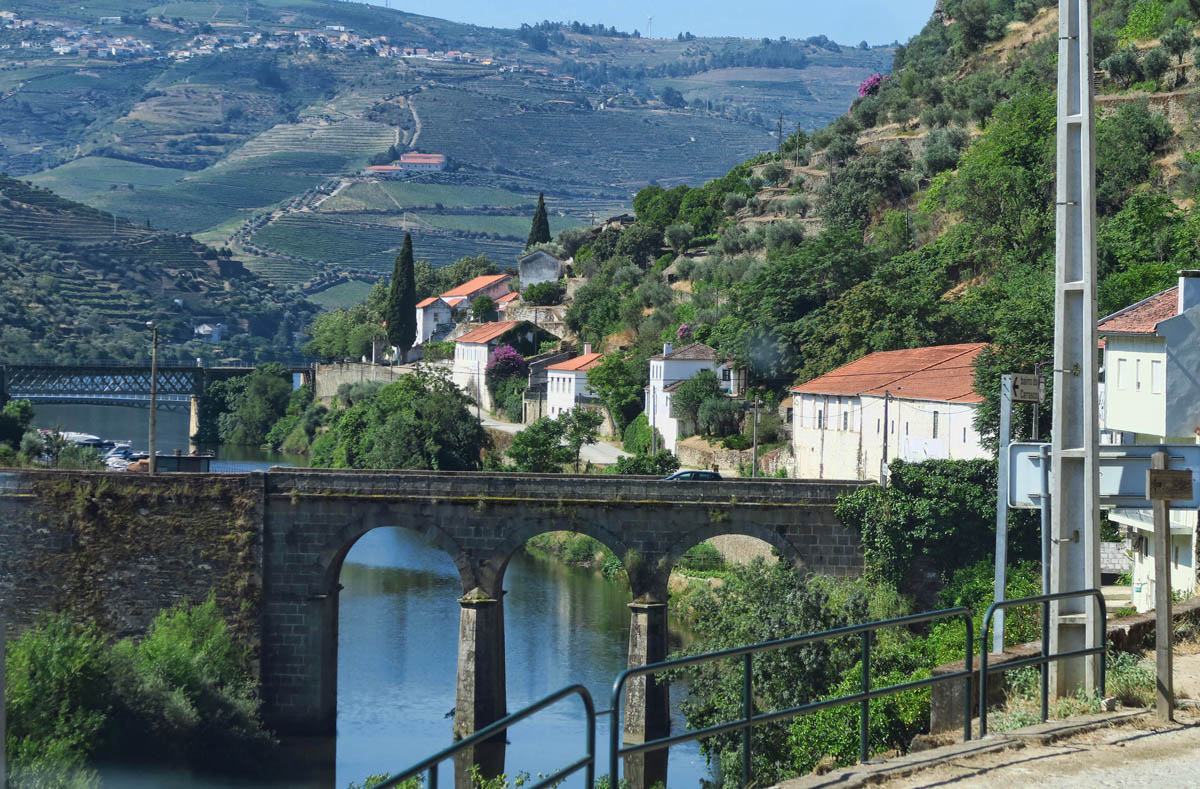 Arriving into Pinhão, our first stop where we will board the boat for our tour down the Douro River. 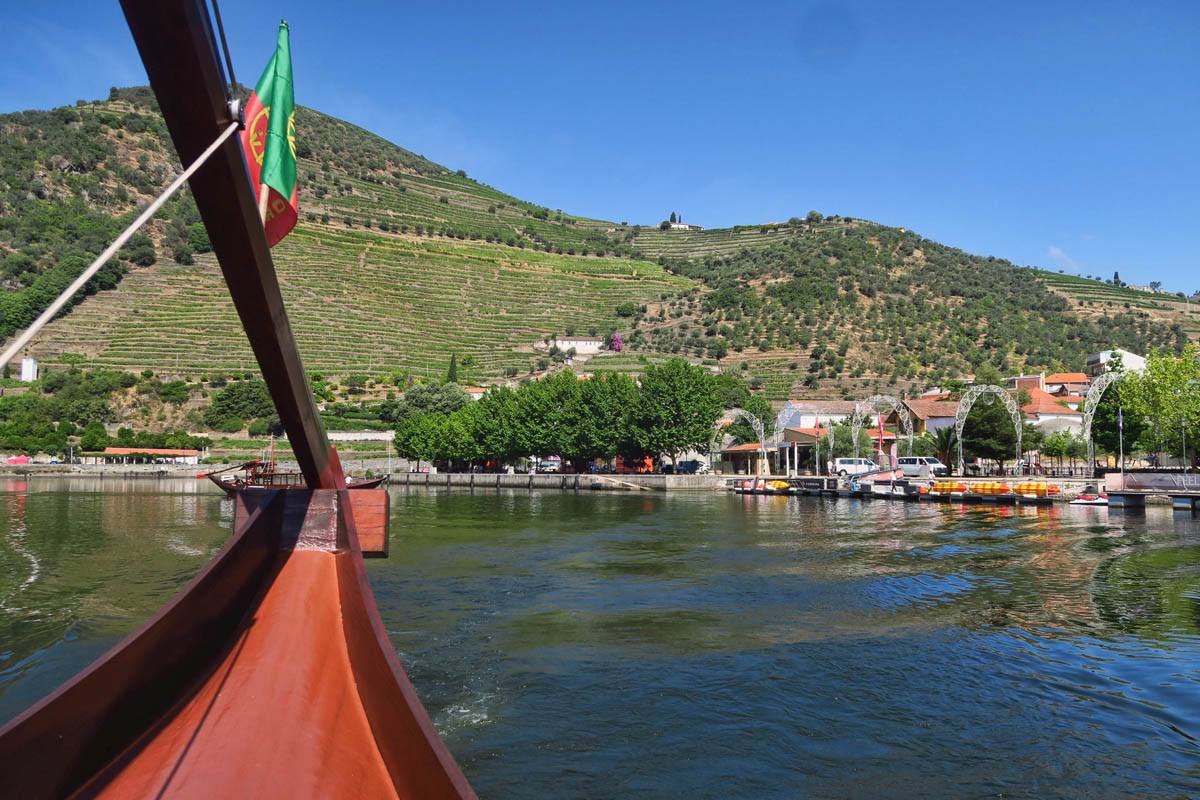 The hour-long ride along the river is a moment of zen. 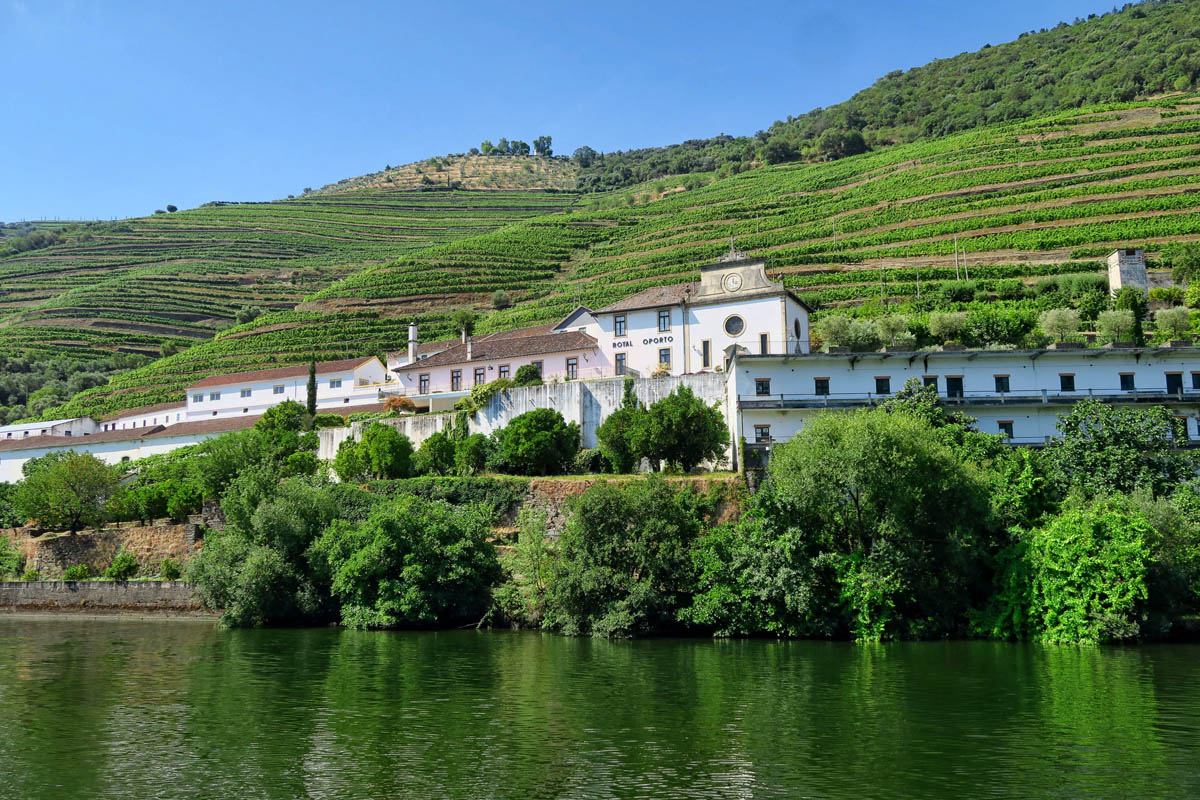 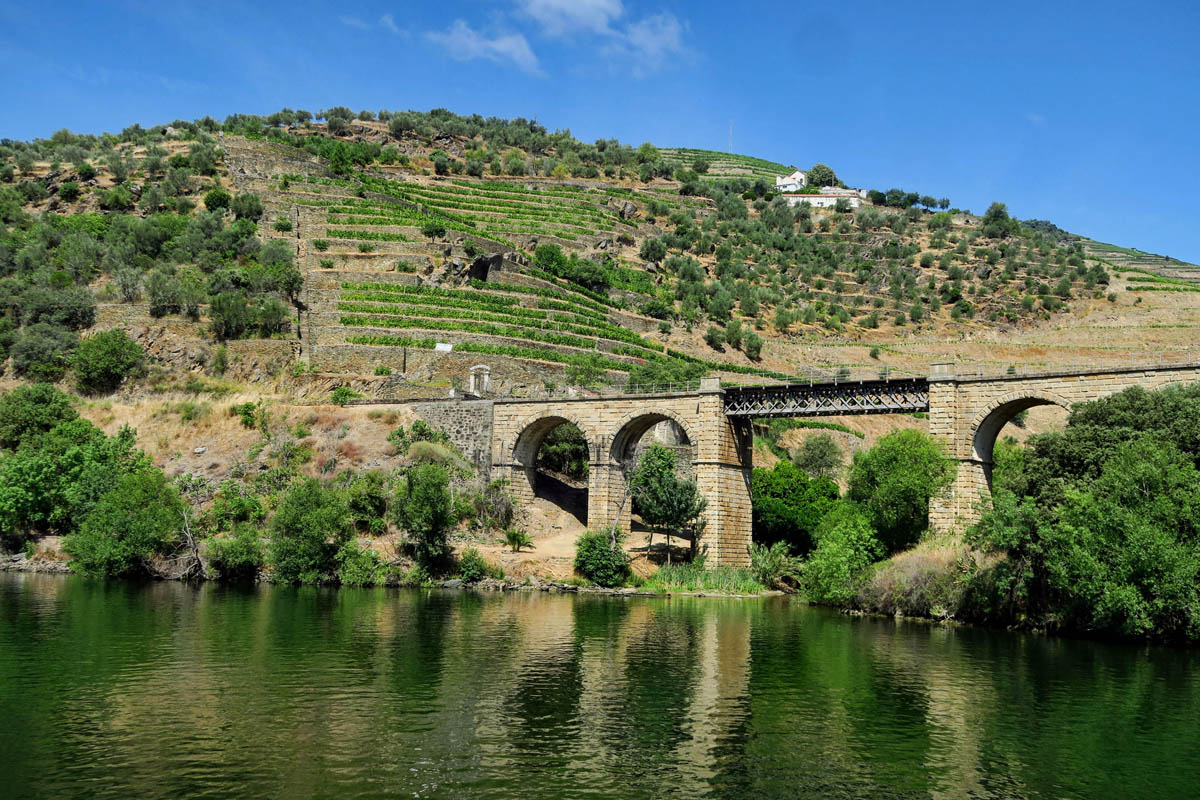 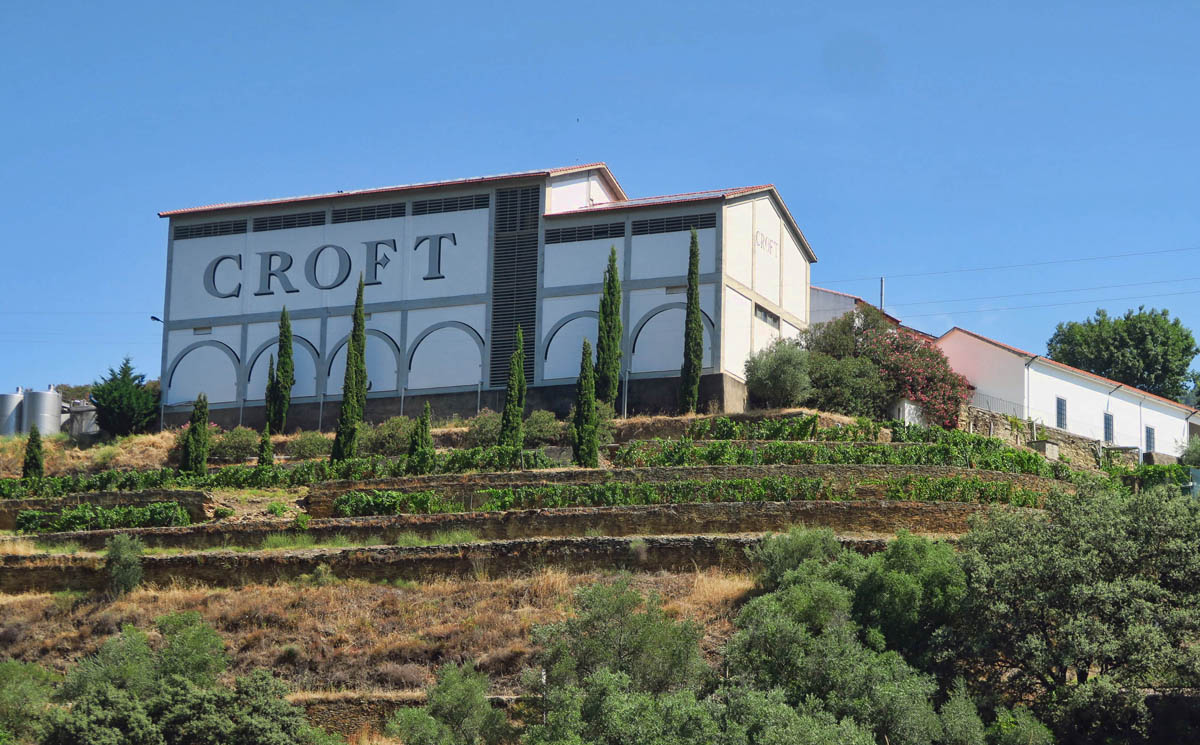 Croft, considered one of the most distinguished of all Port houses, founded in 1588, is the oldest firm still active today. Unfortunately, I don’t recall ever having seen its products for sale in the US market.  Wish I could have toured this one. 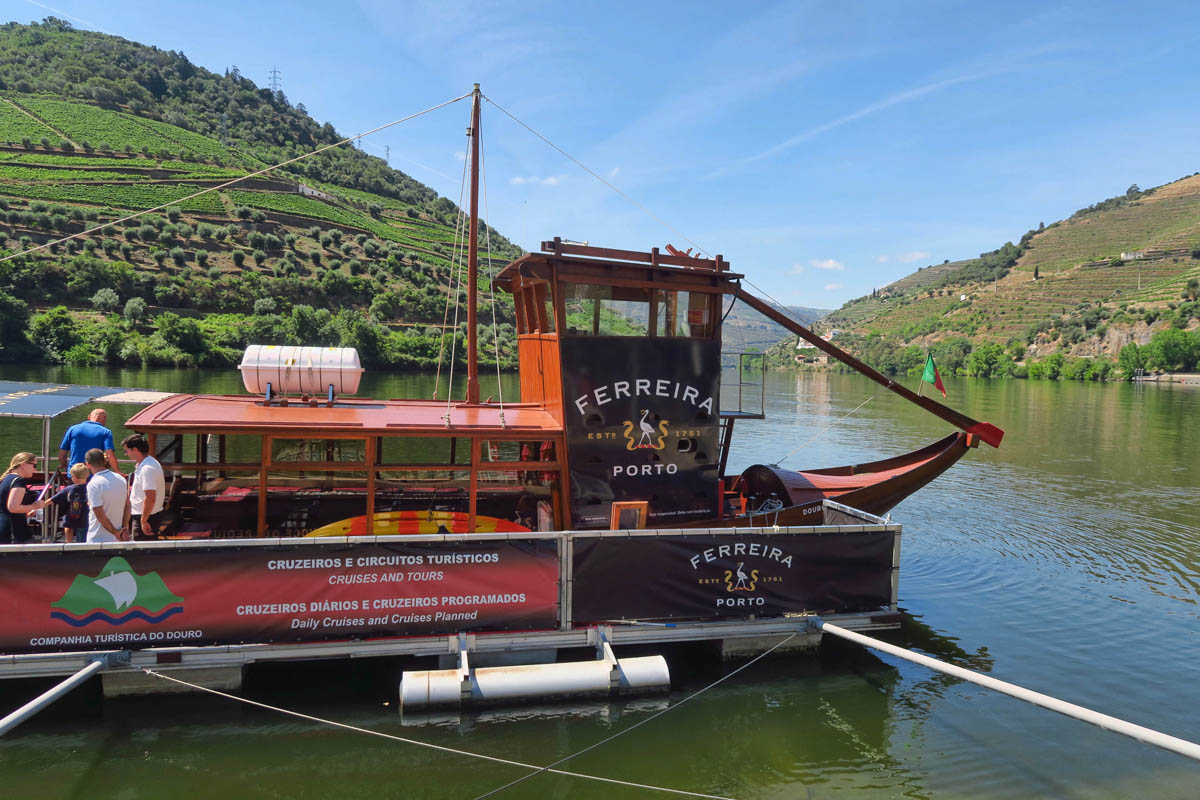 Meeting another boat tour along the Douro River.

As promised, Cooltours arrived at my guesthouse front door promptly at 8:15am. I was the first passenger to be picked up, so I got my pick of seats – shotgun! The day would start with a drive up over the Marão mountains, the range that separates the Douro River from the Atlantic Ocean. On the opposite side of the mountain range, we would visit the small town of Pinhão, where we would board tour boat for a scenic one hour boat ride up the river. After a stop at the historic Pinhão train station, we would tour two smaller, family-owned wineries, Quinta do Jalloto and Quinta de Marrocos (the word “Quinta” means “farm” in Portuguese.) In between, the tour included a typical Portuguese lunch accompanied by local wines. At €100 (plus an additional €10 for the optional boat ride,) it was an expensive tour. However, once I saw how much would be crammed into nine hours, I deemed it “worth it.”

Once across the mountain range, the region known as “Trás-os-Montes,” or “Behind the Mountains,” the weather changes dramatically. Just as one experiences a dramatic change when going from the San Francisco Bay area to Napa Valley, the same happens between Porto and the Douro Valley. The terrain begins to resemble the Mediterranean. The temperature on average is 10 degrees higher, it’s much sunnier, and the humidity drops. This region can reach extreme temperatures in both winter and summer, contributing to the concentration of flavors in the grapes. 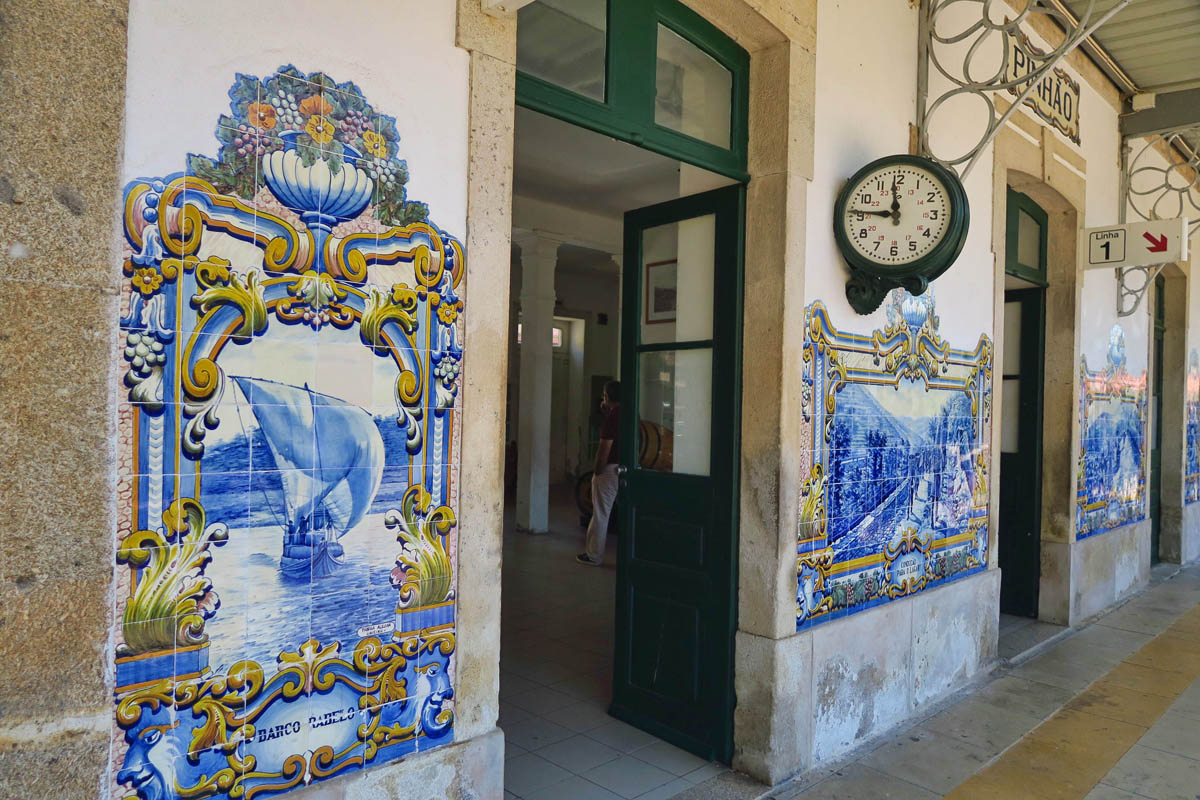 After the boat tour, we tour the beautiful Pinhão train station, where there are 24 tiled panels depicting scenes of the harvest. 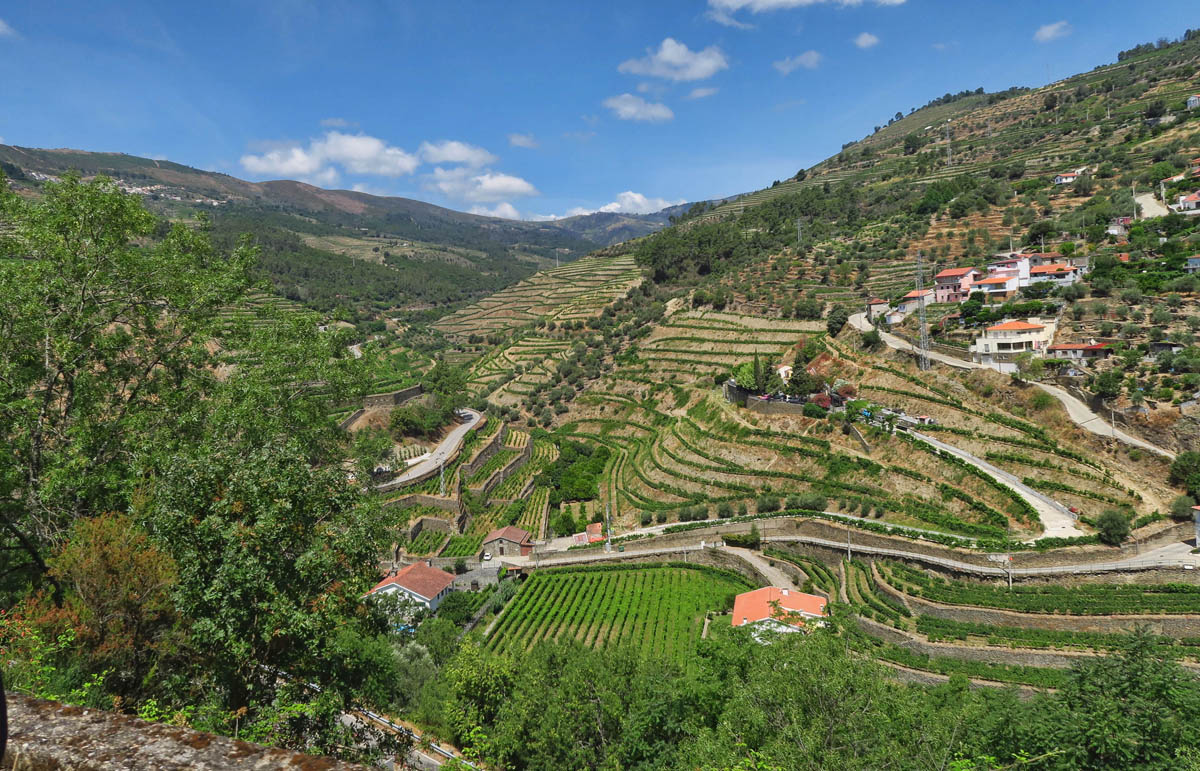 The drive from Pinhão to our next stop, Quinta do Jalloto, is a beautiful drive. I am lucky to be in the co-pilot seat! Another benefit of traveling solo…”Seat for One.” 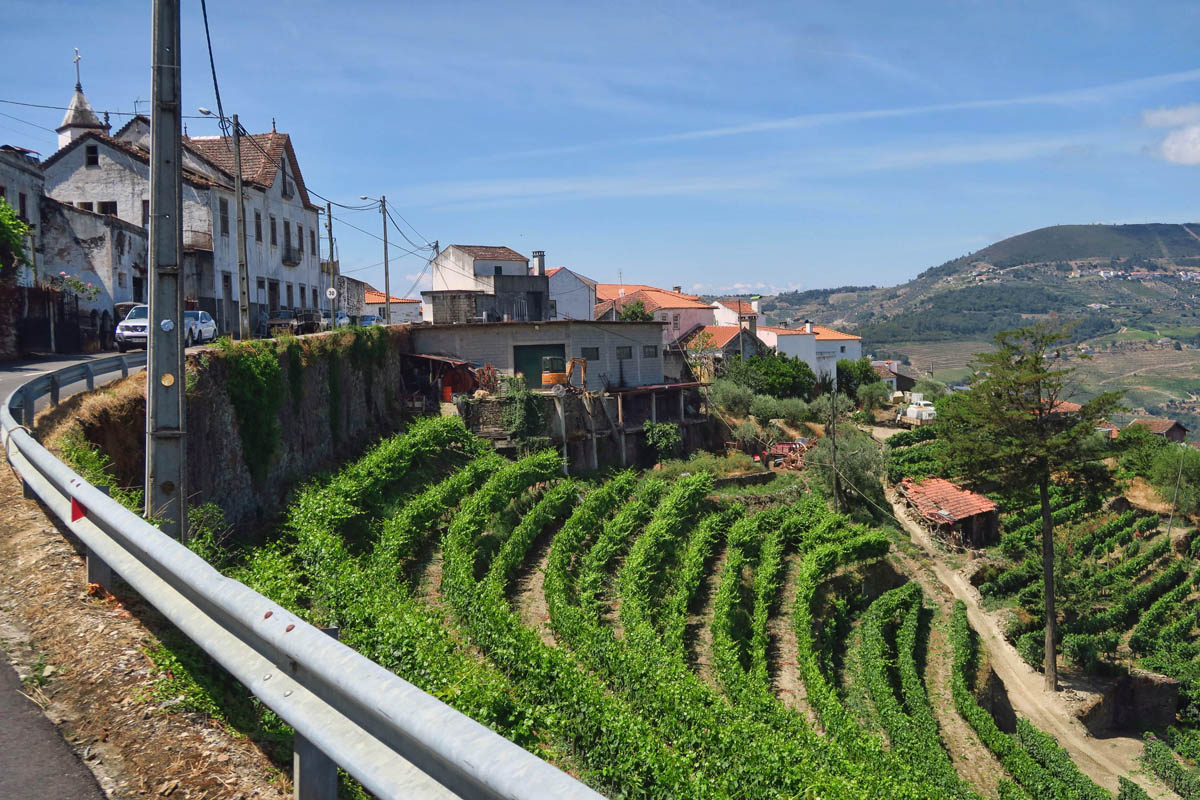 The beautiful handmade stone terraces are what earned the Douro Valley its UNESCO World Heritage status. 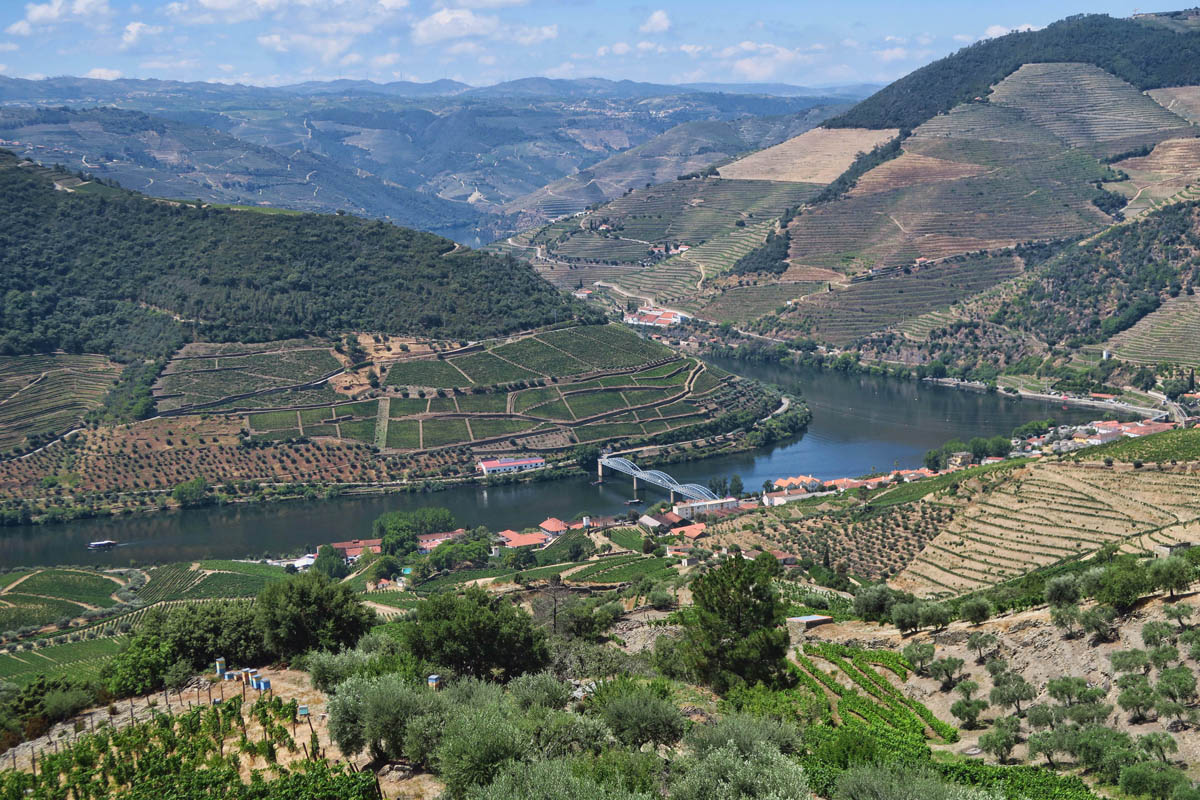 Our first winery visit, Quinta do Jalloto, has an outstanding view of the Douro Valley. 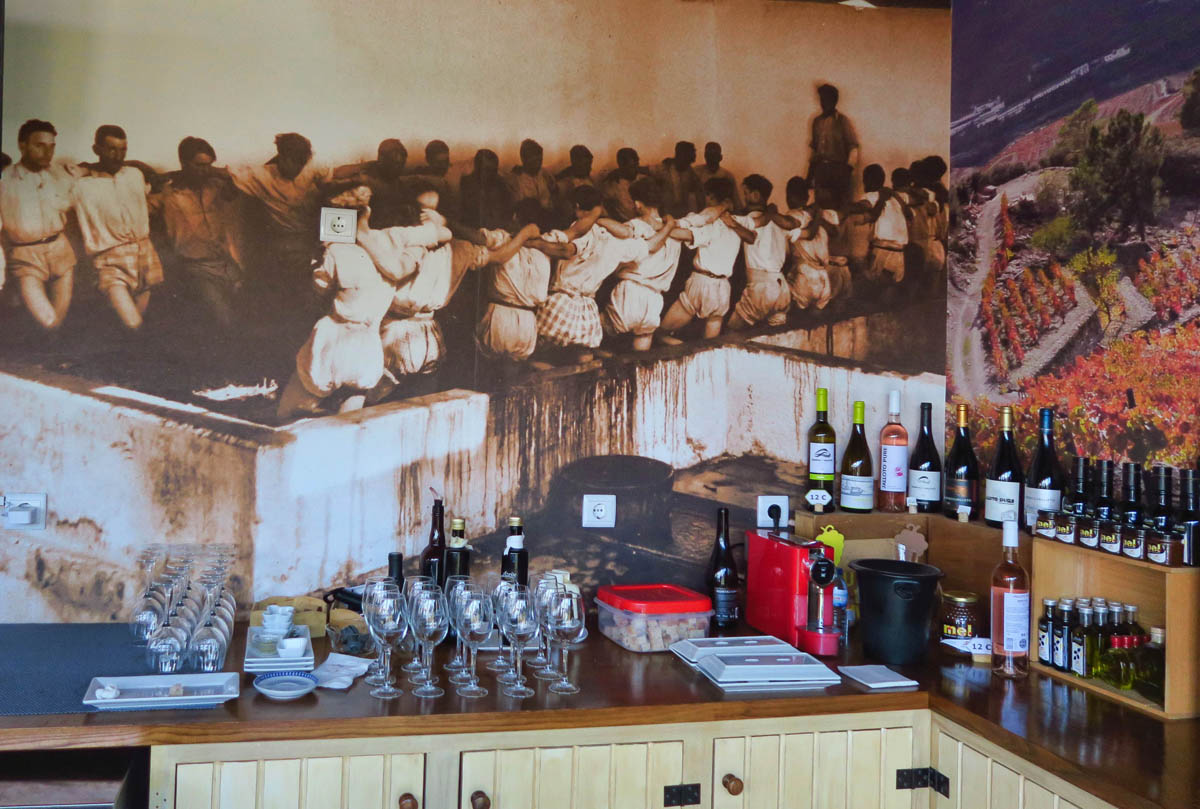 This vintage photo on the wall of Quinta do Jalloto tasting bar shows “grape stomping” in action. We are told that just as in the photo, they still lock arms because it’s difficult to maintain balance in the mash-up. 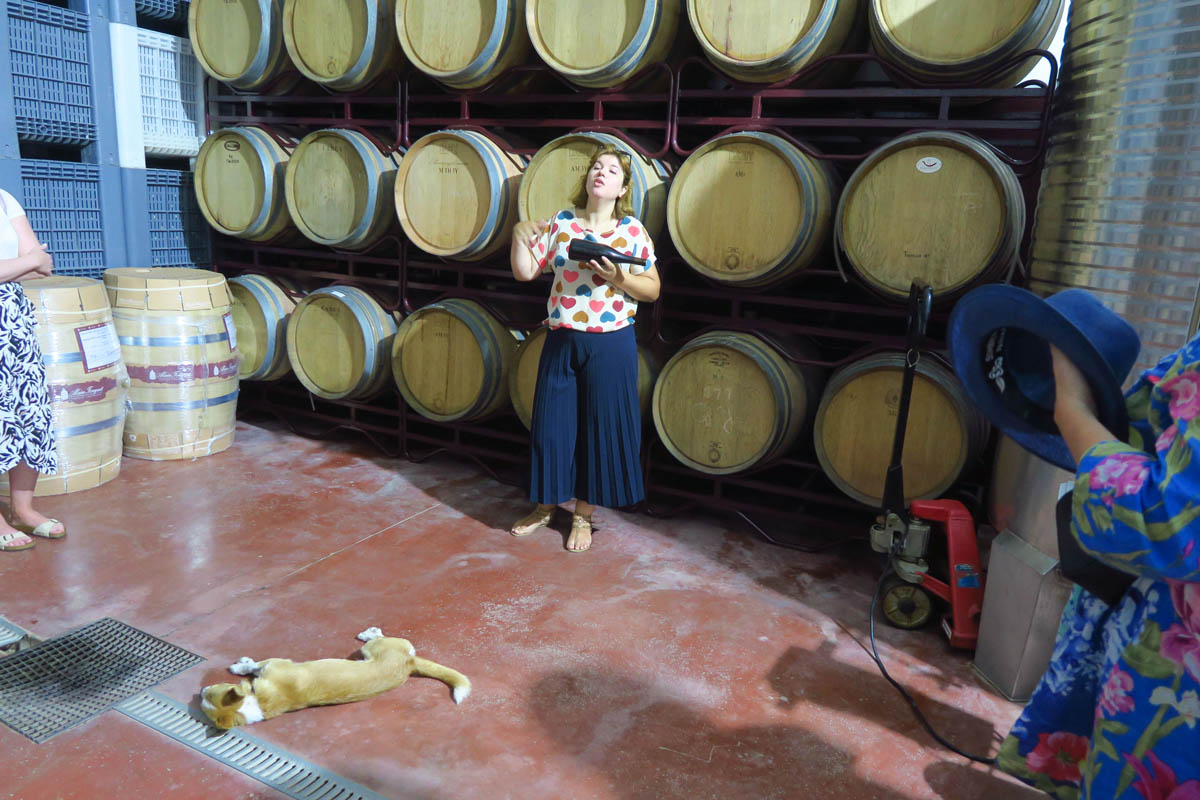 Quinta do Jalloto is a family-owned winery, and even the family dog participates in the tour. 😉 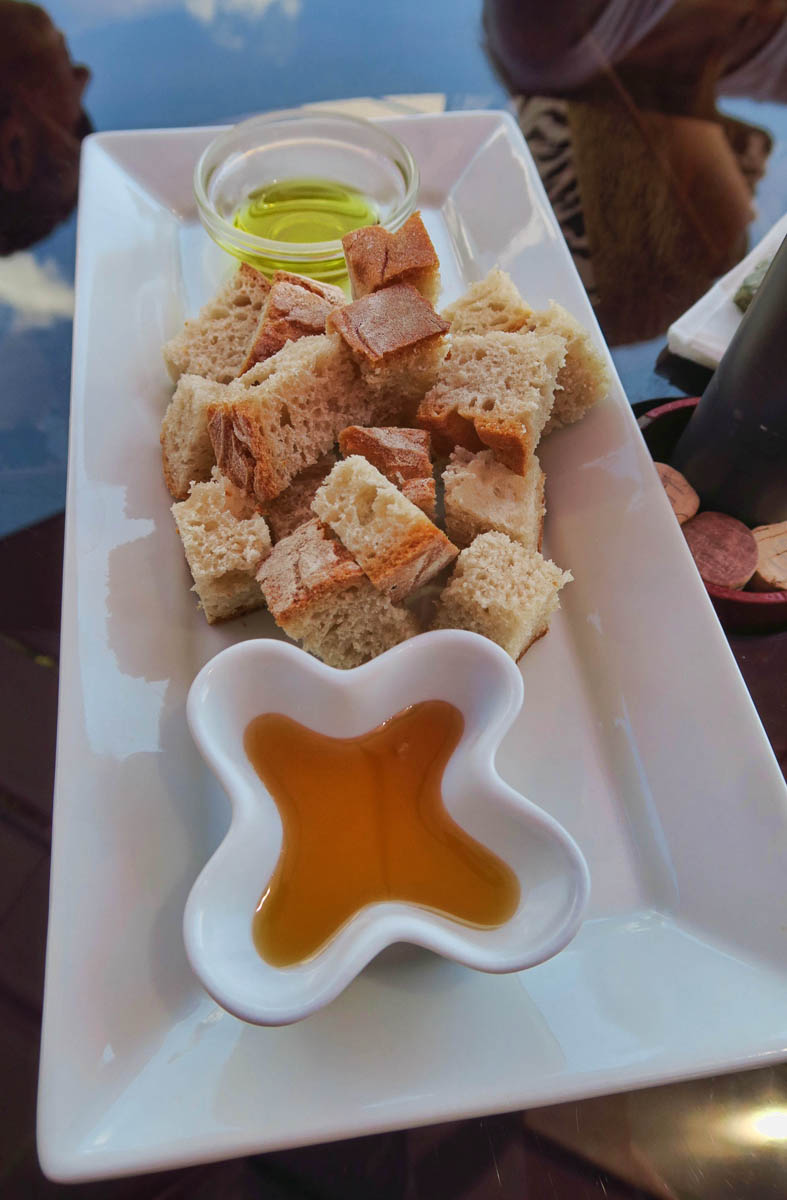 This family-owned winery is also producing olive oil and honey. We get to sample both, along with their wines and port. 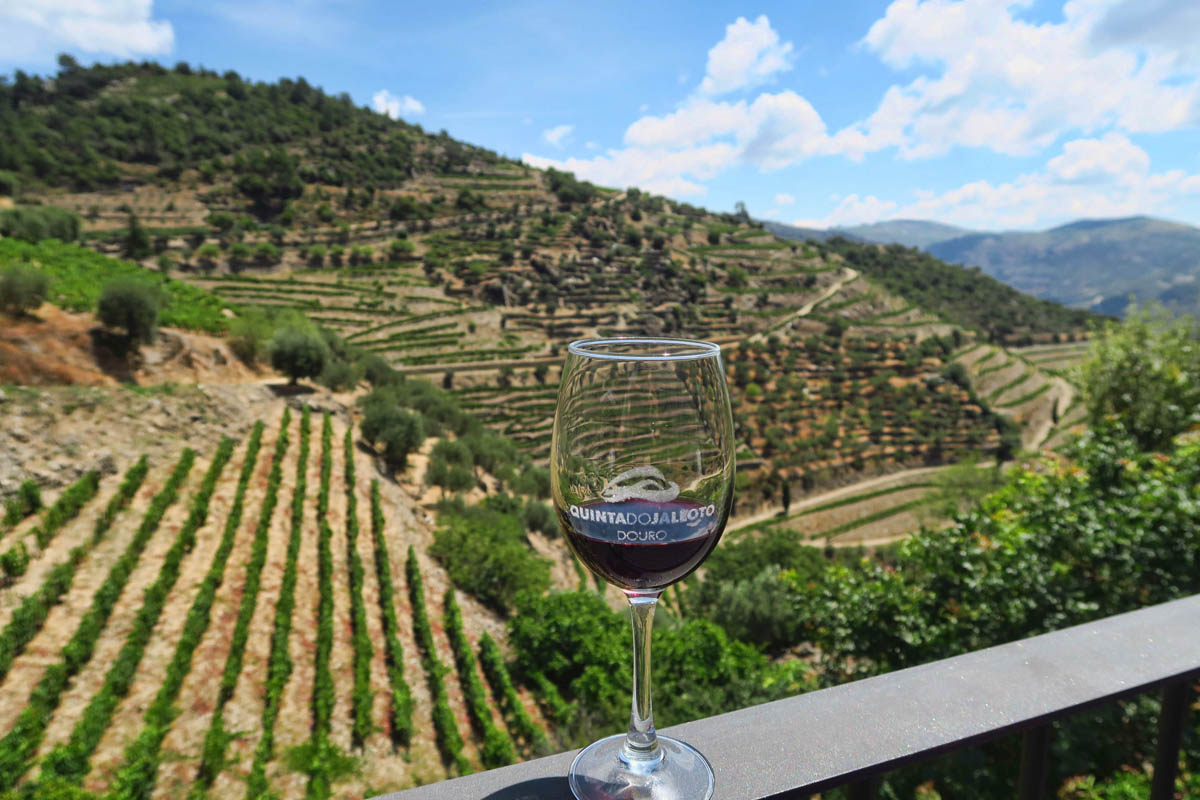 First, we taste some of their wines, then we get a sample of their “private stock” of Port. 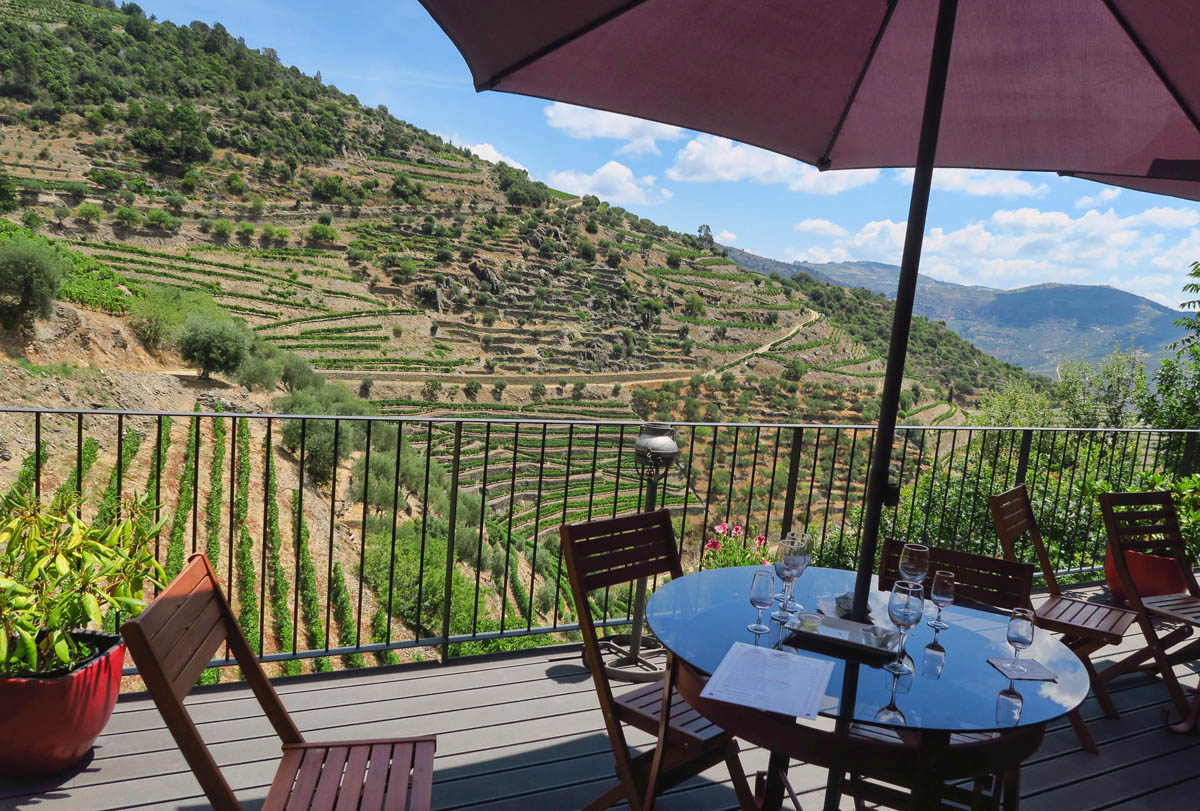 The view from the “tasting terrace” at Quinta do Jalloto was stunning. 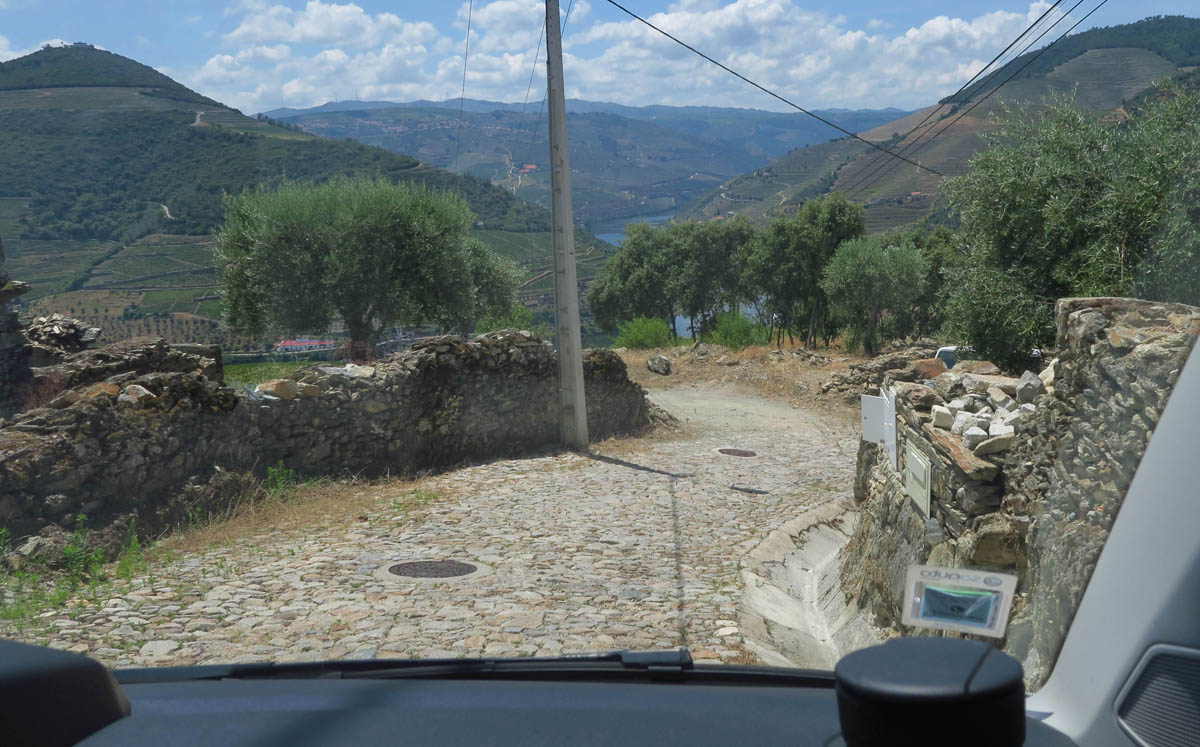 These cobblestone roads connect the wineries. I would not have wanted to be driving these roads after the tasting! 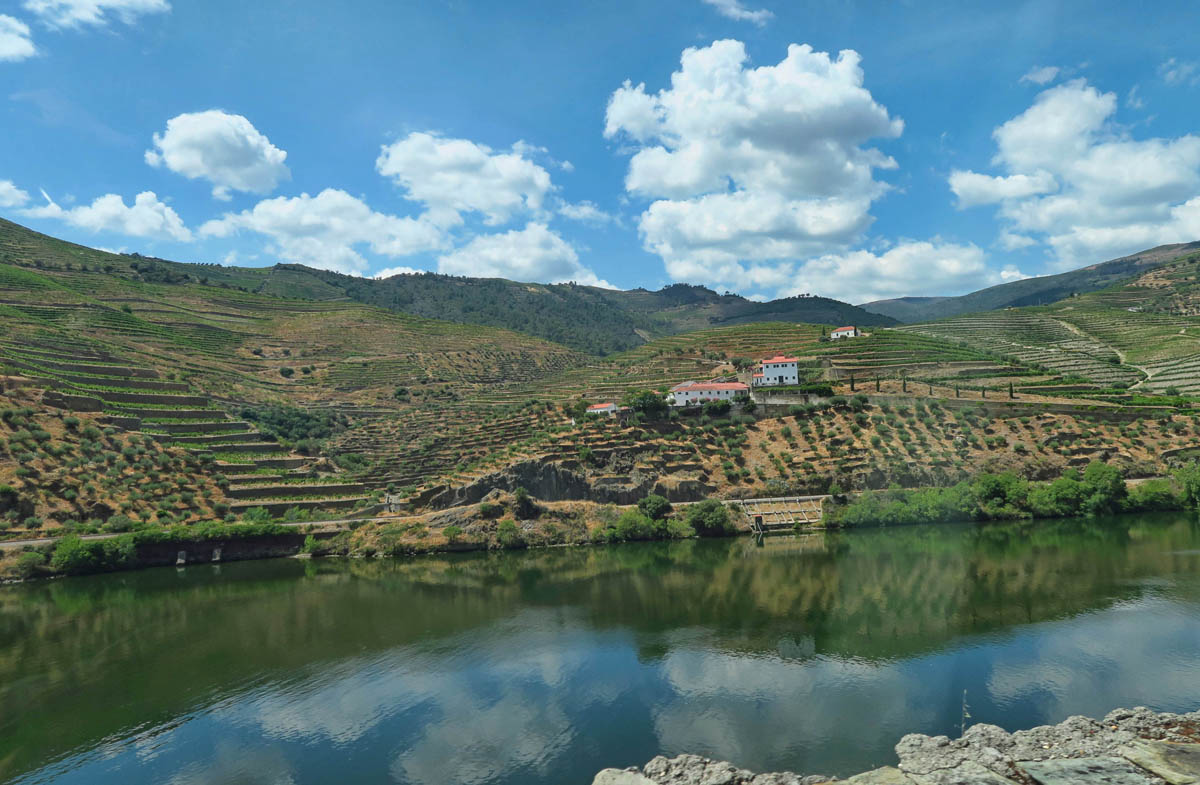 We have beautiful weather on this day!

The Douro Valley region is the third oldest protected wine region in the world, established in 1756. It follows only the Tokaj-Hegyalja region in Hungary, established in 1730, and Chianti, in 1716. Grapes used to make port must be grown in this demarcated region in order to hold the claim of “authentic Port.”

As the region has been producing since the mid 18th century, many of the traditional growing, harvesting, and production methods are still in place today. The steep, narrow terraces hand-made from the schist rock in the area are often only wide enough for one row of vines. It is these beautiful, dramatic terraces that contributed to the region’s designation as an UNESCO World Heritage Site in 2001. However, their vertical slopes render mechanization impossible, so all labor must be done by hand. 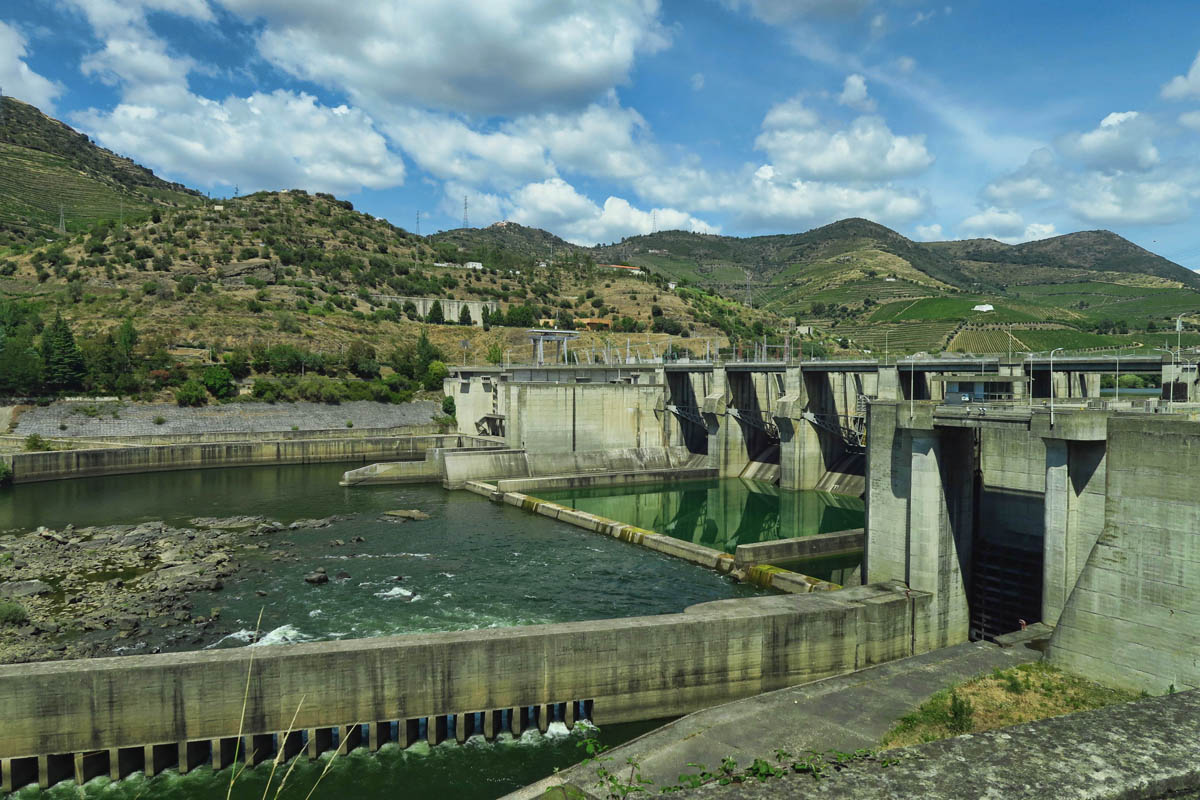 This is one of the hydroelectric dams along the Douro River that made the old manually-steered wooden cargo boats, rabelos, obsolete. Lock is in the lower right of the photo. 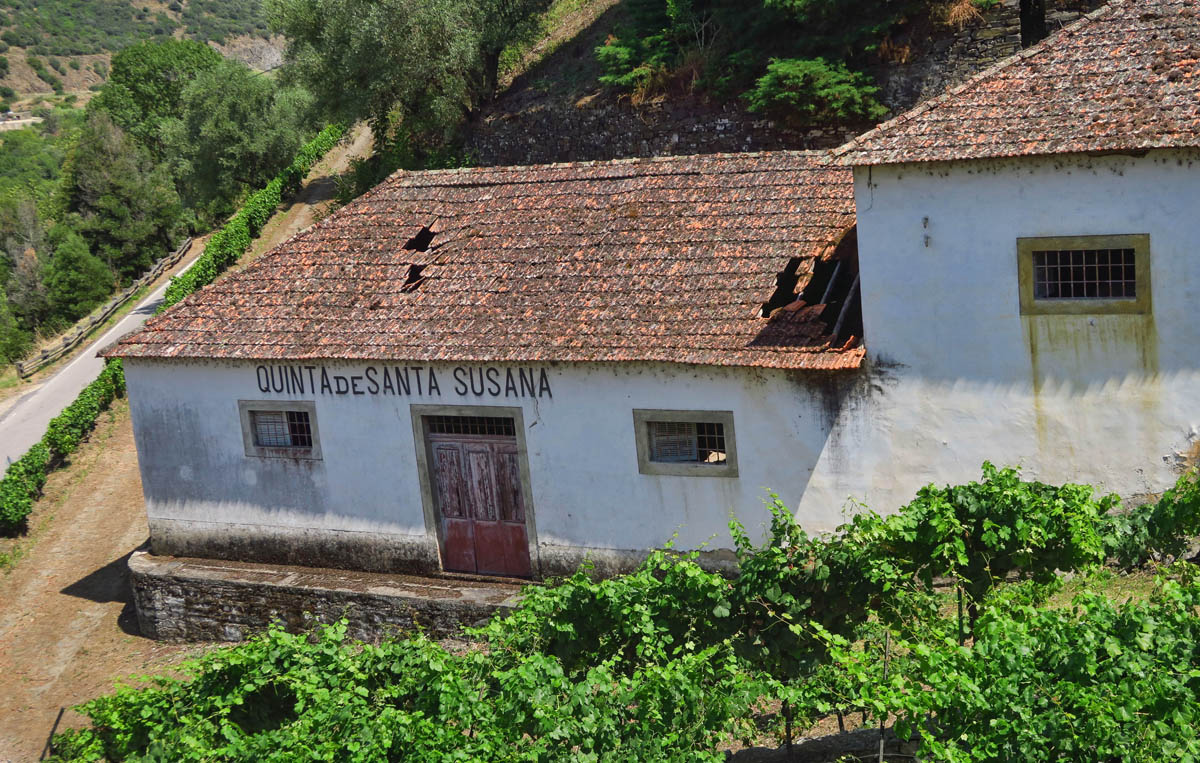 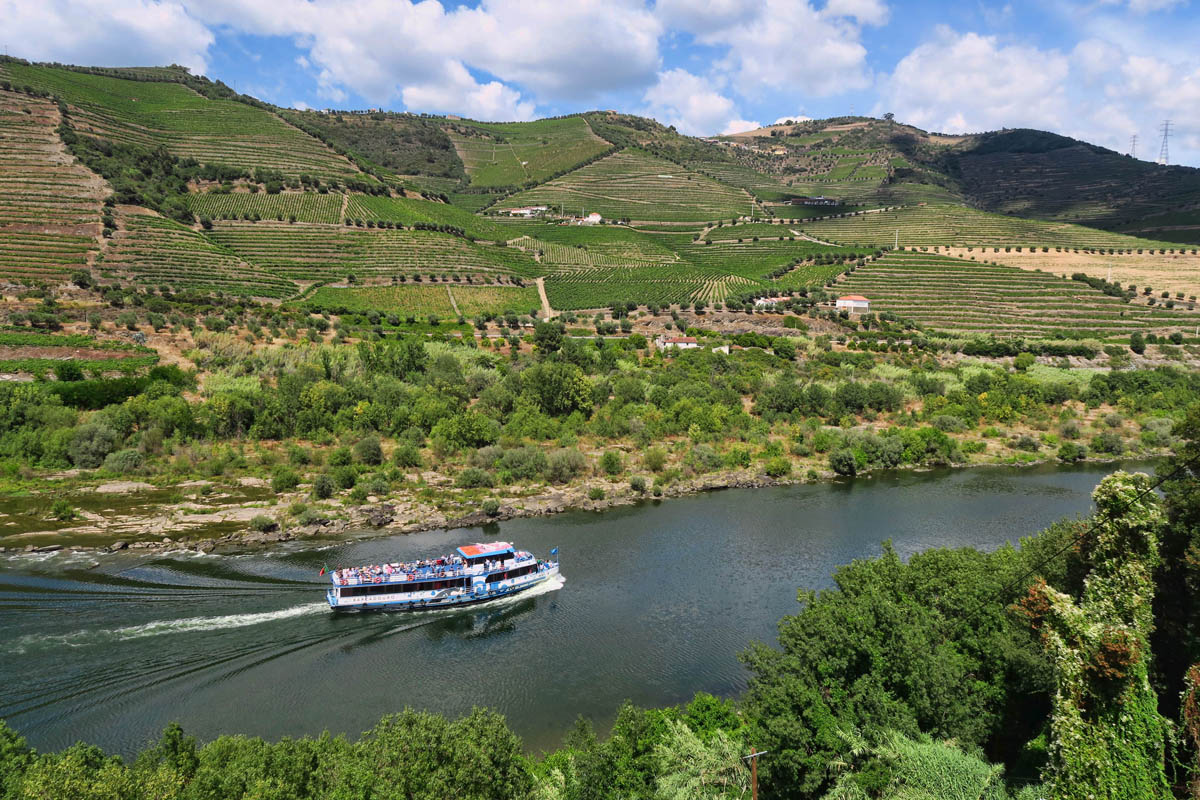 Cruises from Porto upriver to Pinhão are also very popular, but quite pricey.

I was surprised to learn the traditional production methods are still in place today as well. The smaller vineyards still “tread,” or stomp the grapes, skins, and stems by foot in a giant granite vat. Some farms will offer a “farm stay” where tourists can come during this time to help with the harvest, and participate in the treading.

However, it is reported to be hard work, as it requires three hour shifts in the treading vat, linked arm and arm to avoid falling. Machinery has been developed to augment this process. On the tour, we are shown a “treading machine” that has a silicone rubber stamper the size of a human foot. But the owners claim it’s no substitute for the human touch of the laborer. 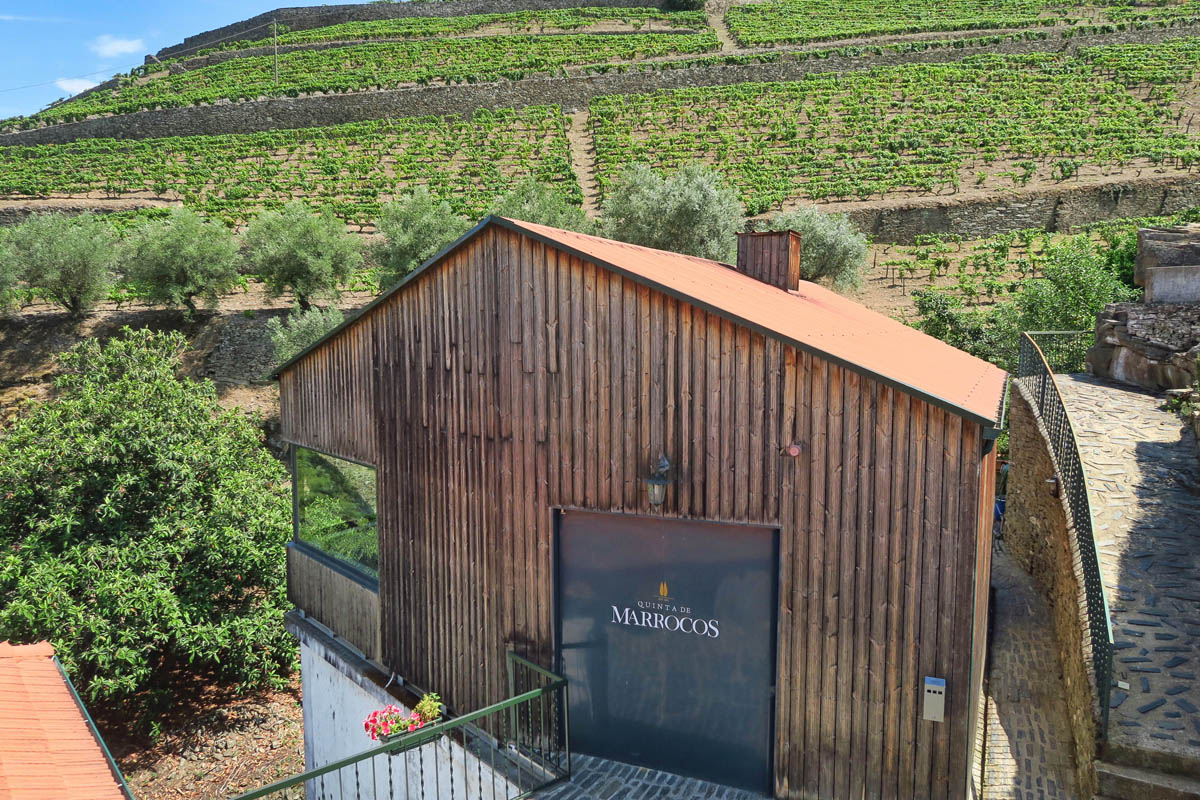 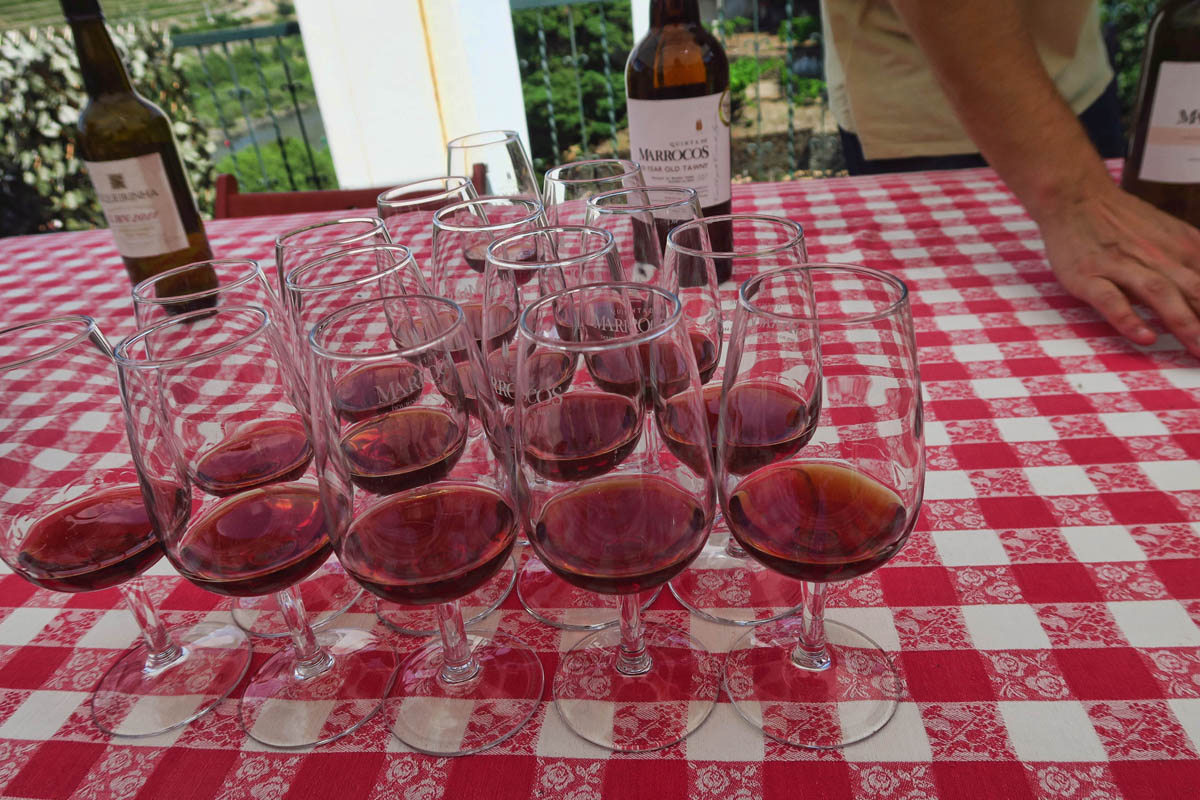 While our group is small, we are tasting with another tour group. 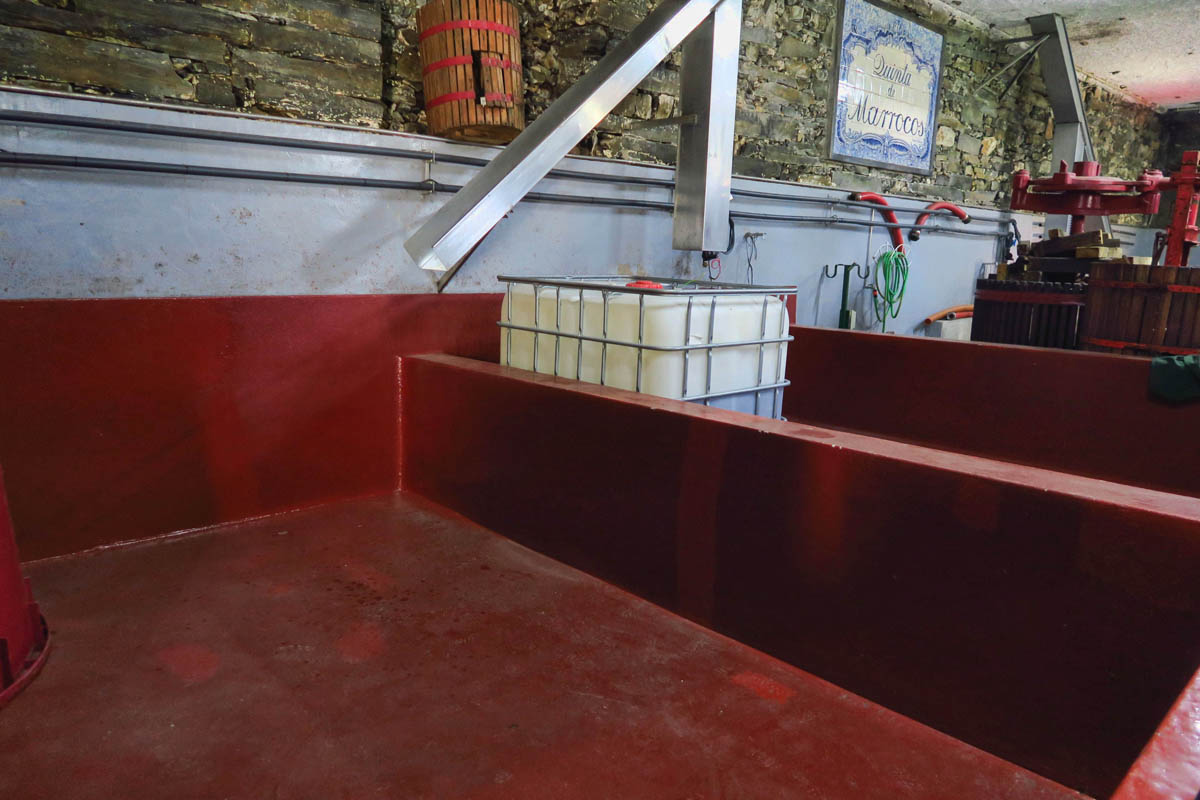 This is the actual vat, or shallow treading tank, called a “lagare” where traditional treading still takes place. 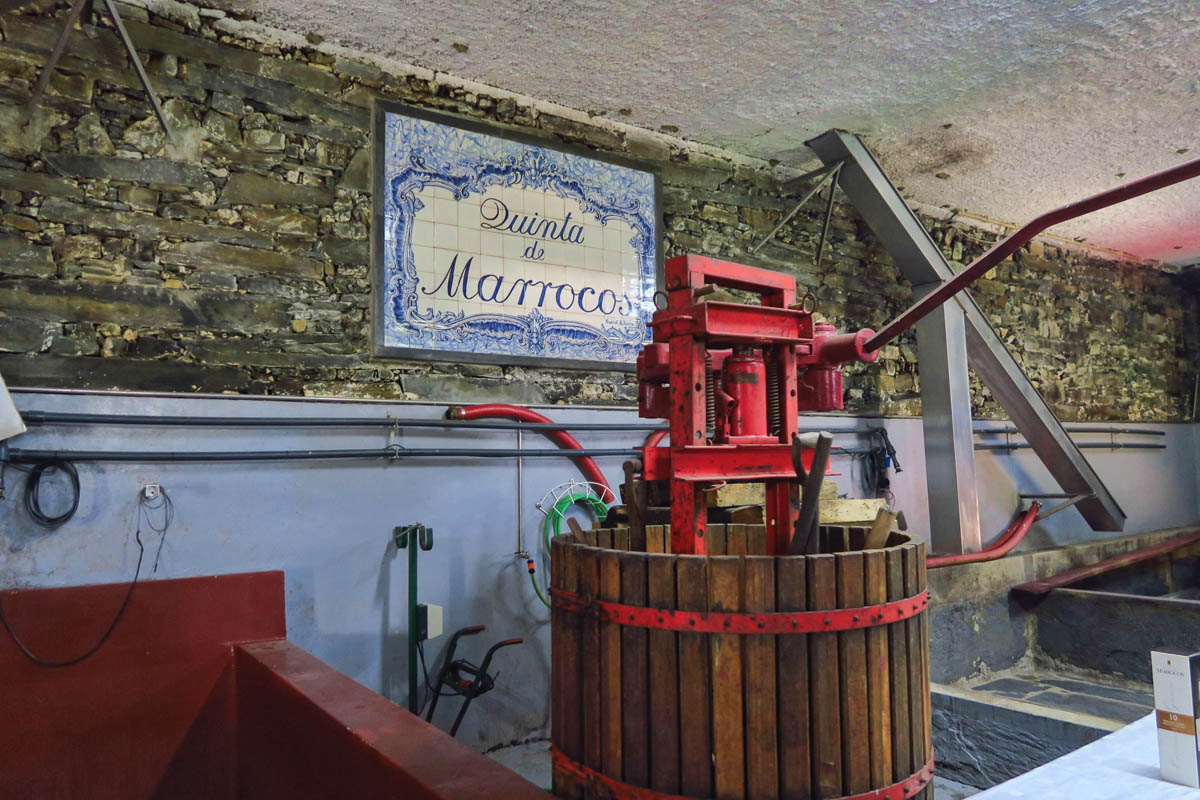 Quinta de Marrocos not only has some of the oldest vineyards in the Douro Valley, they also are vested in tourism. One can stay in the family home, and participate in all aspects of the harvest, including “treading.” 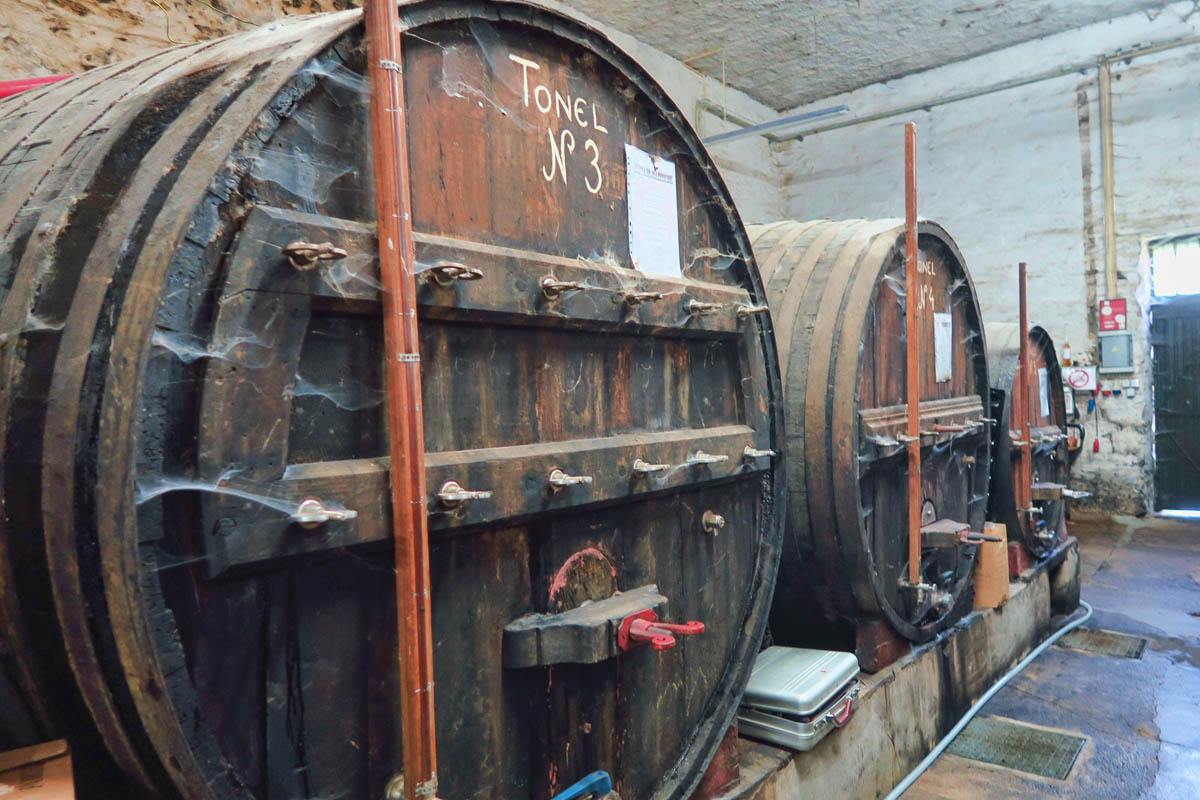 The cellar is where all the wines are aged. 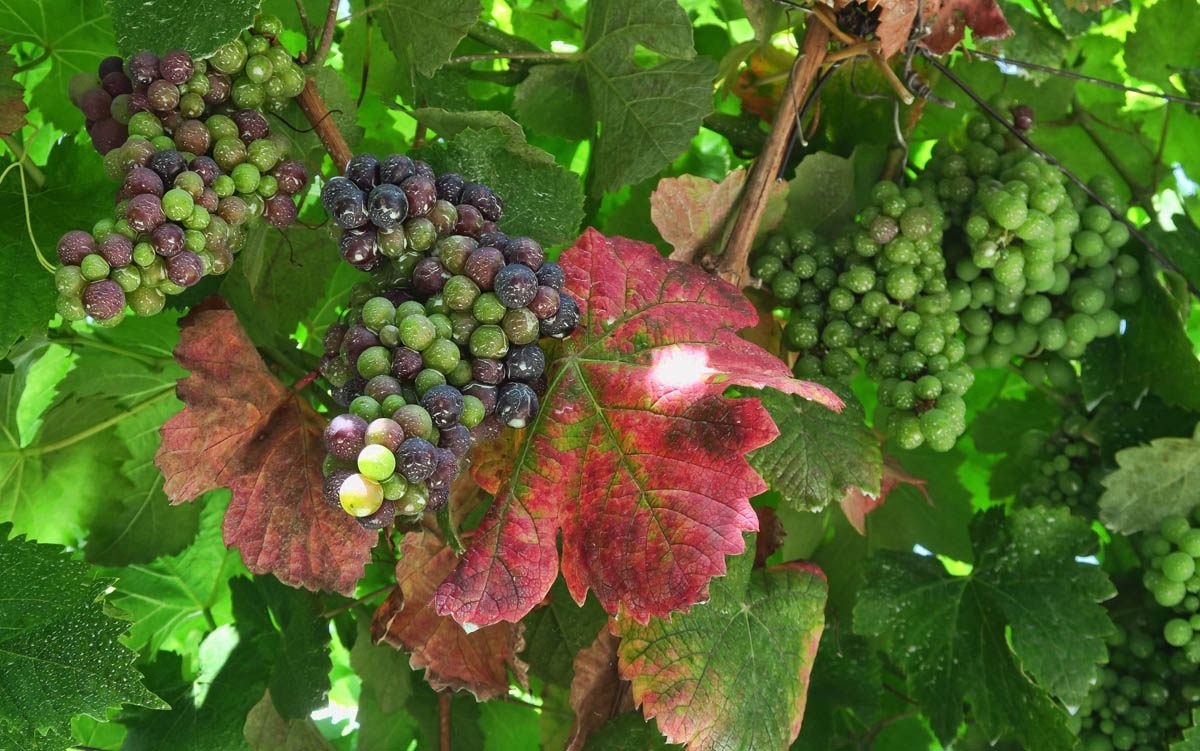 Quinta de Marrocos has some of the oldest vineyards in the region. Grapes from the Douro Valley typically grow in tight bunches of small, thick-skinned grapes packed with flavor.

Like many small towns and villages, the wine region of Douro Valley is at risk, as the younger people don’t want to remain on the farm to do the manual labor. Like this “farmer’s daughter,” they would rather leave the doldrums of small town living and weathering labor of the farm for the excitement and opportunities of the big city….where they can sit at sidewalk cafes and sample the fruits of the labor they (we!) are not willing to do. It’s a conundrum, as machines are unable to replicate the work of human hands, yet laborers are in short supply.

Pondering this aspect gives me a new appreciation for the beautiful golden amber, oaky, leggy liquid swirling in the bottom of my glass….for the people who lovingly produce it, and for the privilege I have been given to enjoy it.

This concludes my two month tour of Portugal. I have one more post from Spain, but then it’s back to the USA for the blog. I hope you enjoyed my account of this surprisingly small country with such astounding beauty and variety that it could have warranted a post per day. Thanks for following along.

14 thoughts on “Visiting the Vineyards of the Douro Valley”