I’ve always enjoyed a nice glass of port wine, Vinho do Porto, after dinner or by a fire, often accompanied by some really good “stinky” cheese to cut the sweetness. It’s a drink that warms from within. In fact, when I used to do charters with my sailing pals, a bottle of Port would always be on the provisioning list to be enjoyed out on deck while watching the moonlight shimmer across the water.

But beyond the fact that it s a sweet wine made in Portugal, I knew nothing about what differentiated it from other varietals. On Anthony Bourdain’s “Porto” episode, I learned that just as all bubbly made outside the Champagne region of France is only “sparkling wine,” true Port only comes from the Douro Valley of Portugal. All else is just “fortified wines.” So I was eager to visit Porto, the town that gave name way back in the 17th century to one of my favorite libations. 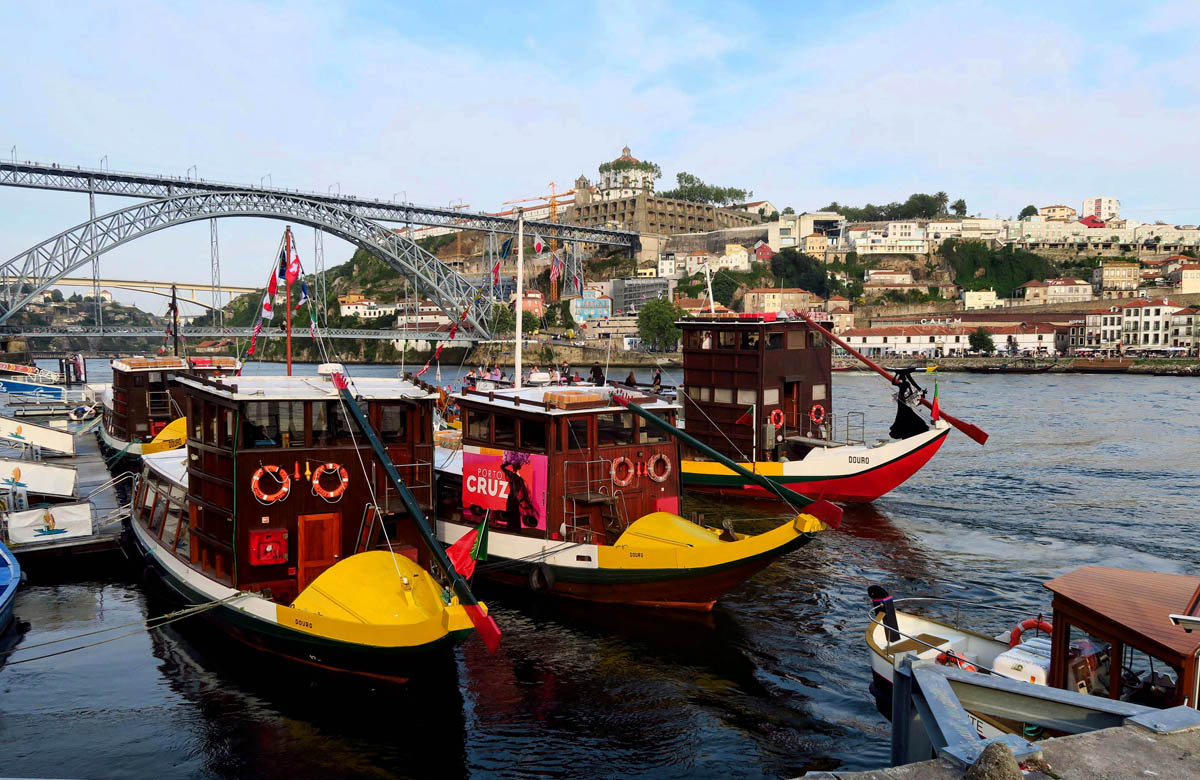 Both sides of the riverfront are very active all hours of the day. 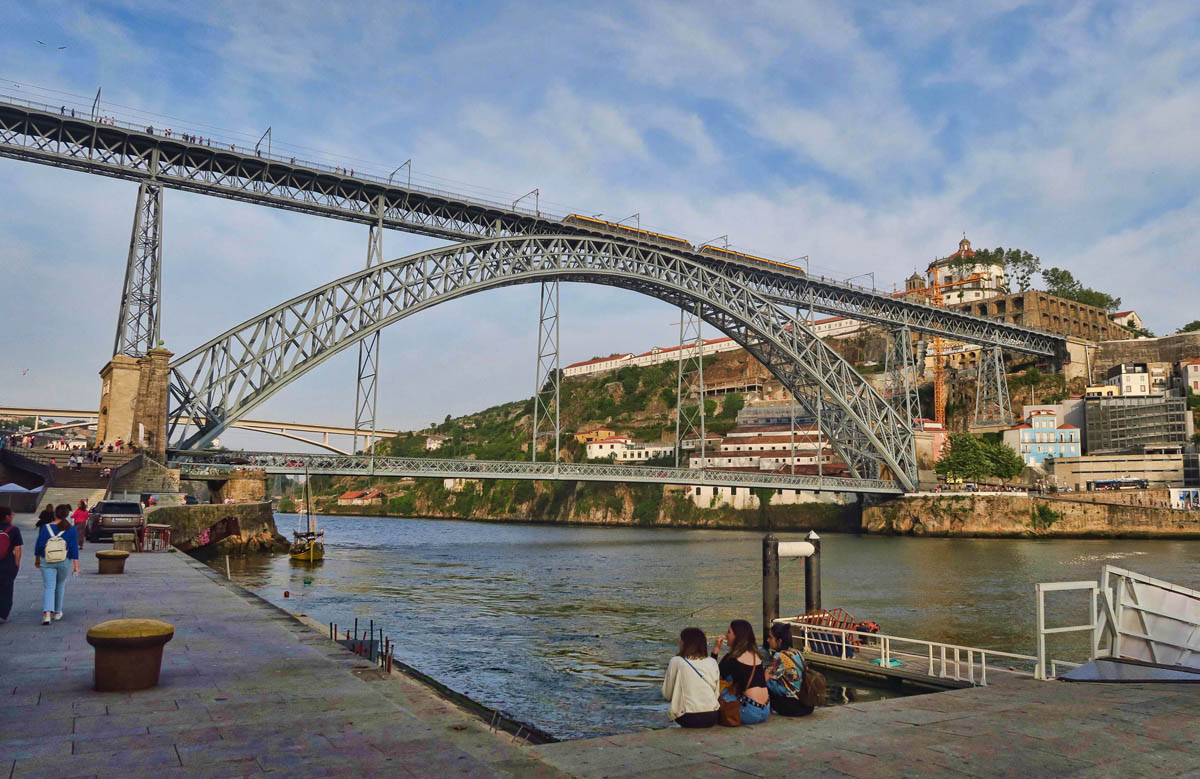 Note the top level of the bridge just past the top of the arch, you can see the two Metro cars crossing. Metro stations on both ends are at the higher level, requiring a walk or taxi down to the riverfront. 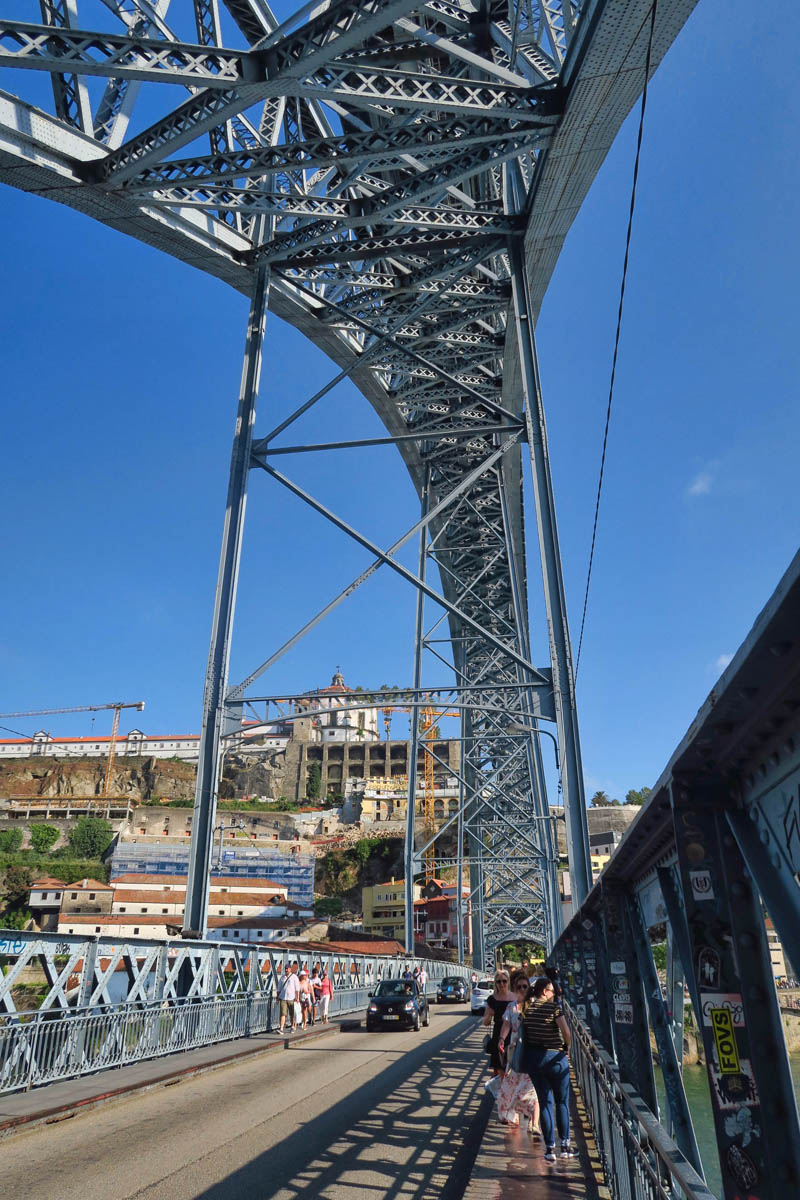 Dom Luis I bridge spans the River Douro linking the port wine cellars of Vila Nova de Gaia with the downtown Ribeira district. The designer was a former partner of Gustave Eiffel of Paris Eiffel Tower fame. Note the resemblance of the iron framework to the tower. 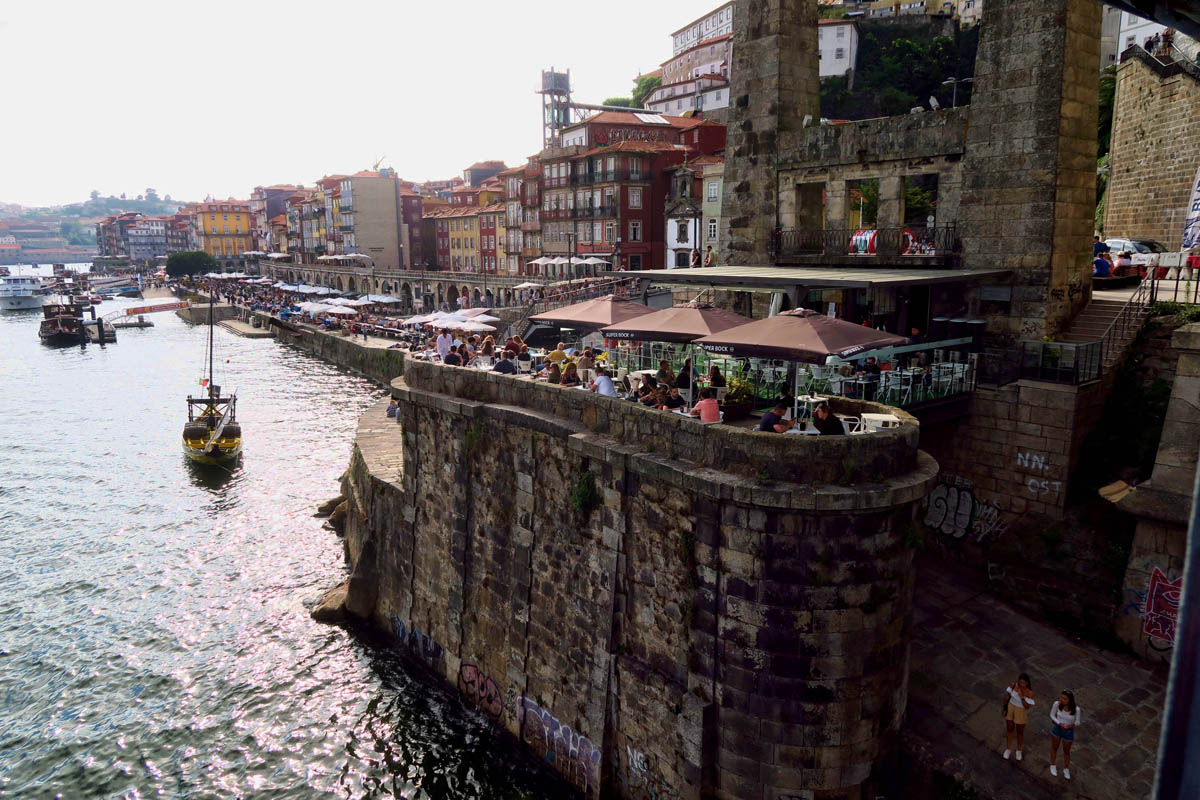 Looking down over a very cool bar from the  bridge.

While grapes were originally believed to have been planted in this region as far back as Roman times, it was the Brits who are not only credited with the invention of port wine, they also own all but one port lodge located along the Vila Nova de Gaia. Since Britain was at war with France, they were boycotting all things French, therefore they turned to Portugal as their source for wine. But most of it didn’t survive the trip across the water. So as legend has it, a bit of brandy (today, “aguardente” or distilled grape spirits) was thrown in as a preservative. This brandy immediately stops the fermentation process, leaving much higher residual, unfermented sugars than typically found in still wines. This results in a sweeter wine, higher in alcohol volume at around 20%.

The area across the Douro River, Vila Nova de Gaia, or just “Gaia” to those familiar, is home to dozens of port cellars, aka Port Lodges, or “caves.” Wine is brought here from the vineyards in the Douro Valley to be placed into casks for aging, bottling and distribution.

I opted to visit two different Port Lodges, again on the recommendation of Fabio, the wonderful host of the Casa Adriana Guesthouse. Fabio recommended that I choose only two to visit. He maintained that after two tours, the information would start to become repetitive, while there would be plenty of opportunities for tasting along the riverfront without paying for a redundant tour.

It would take me most of the day to meander across the river, take the tours, and enjoy a couple of tastings. The lodges are all located on the opposite side of the river from where I was staying. There area a number of options to reach the Gaia area. One can take the Metro across the top level of the Luis Bridge, then walk or ride the cable car down to the river. Or take the fast and frequent water taxi which crosses the Douro River in around five minutes. Or if you are a cheapskate like me and refuse to pay the €6 round trip, you can walk.

For my first choice, I picked Cálem, the leading brand in Portugal selling 2.6 million bottles annually. I knew it would not be as enjoyable because they are so popular with tour groups, and accept walk-ins up to the maximum number. But I chose it because I read it had a good introduction for beginners to the process of making port wine. Also, they offered the option of a Fado concert at the end of the tour. 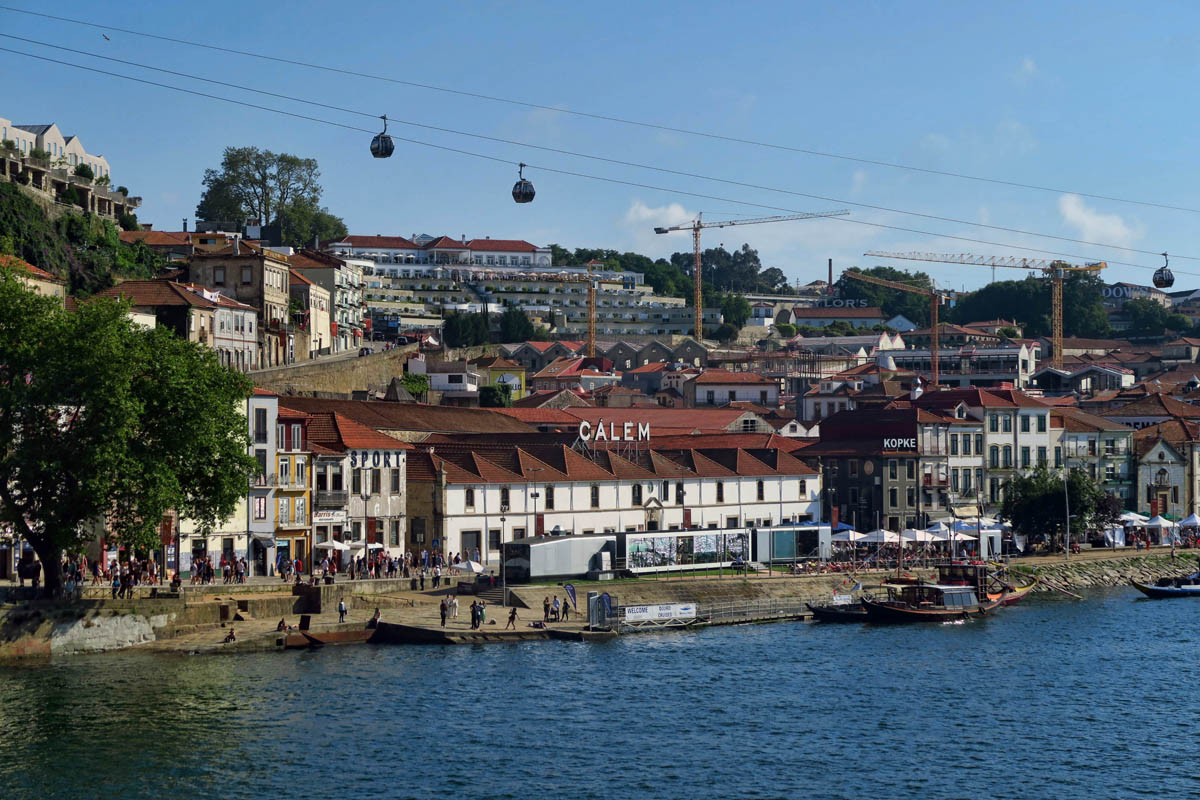 One can descend from the upper level either by walking, taxi, or this €5 cable car. Note Cálem “Cave” or Lodge at street level. That’s where I’m headed. 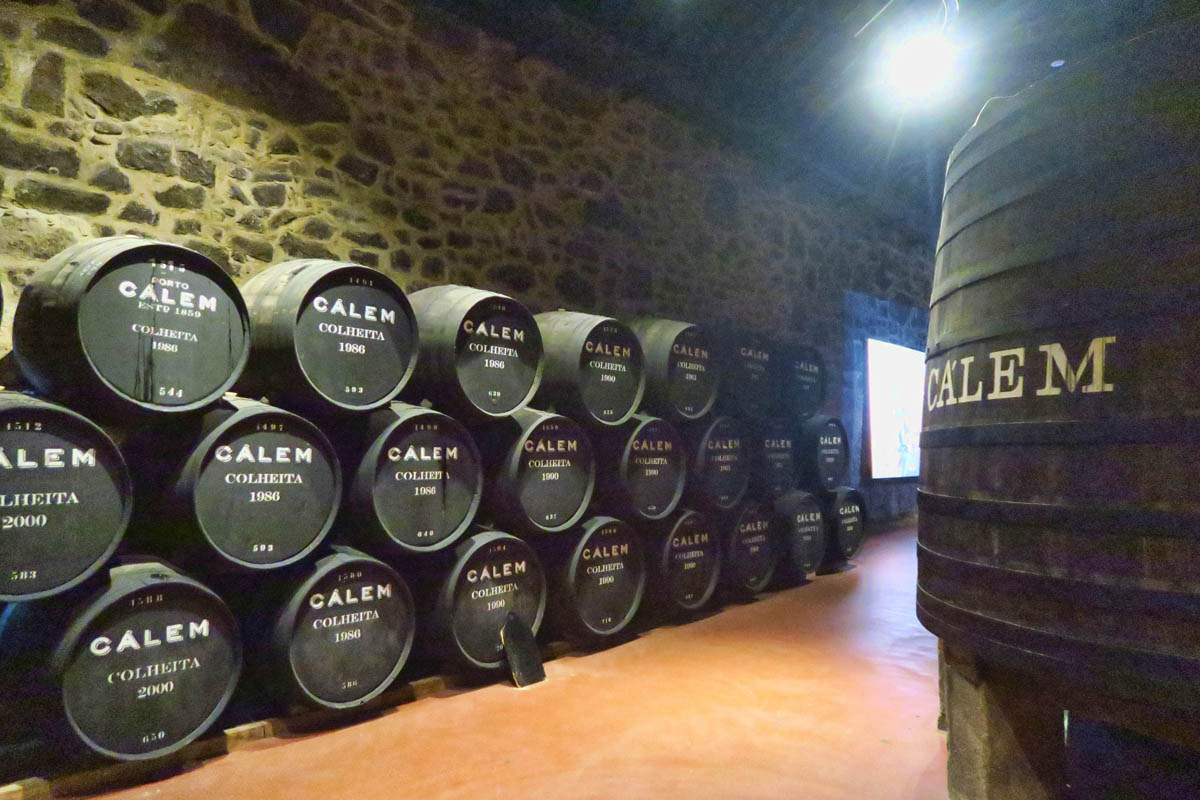 On the Cálem tour, we see larger oak vats which are where Ruby is often aged, and where Tawny starts out. Then Tawny is further aged in the smaller oak casks. On the left is a “Cohleita” made from grapes all from the same year, in this case, 1986. 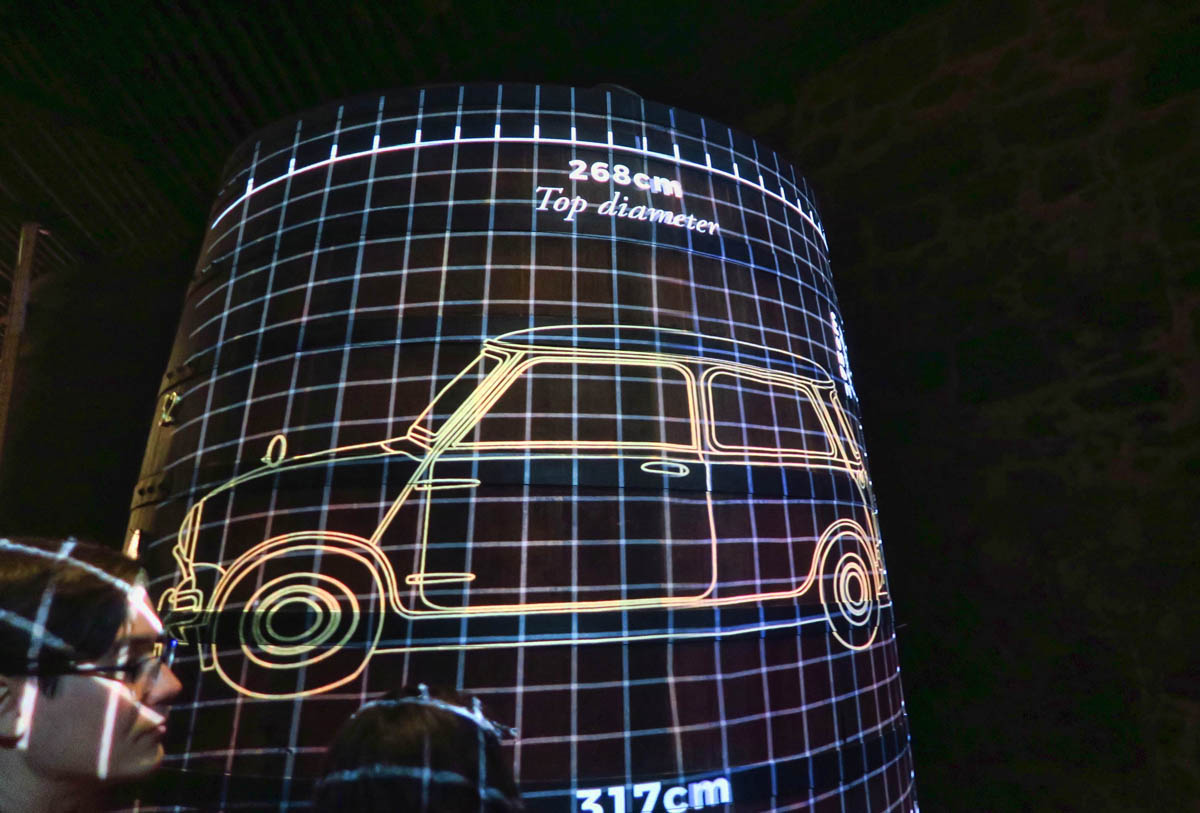 This image of a lifesized Mini Cooper superimposed on one of the larger vats shows how huge they are. They can contain the equivalent of 17,325 bottles. 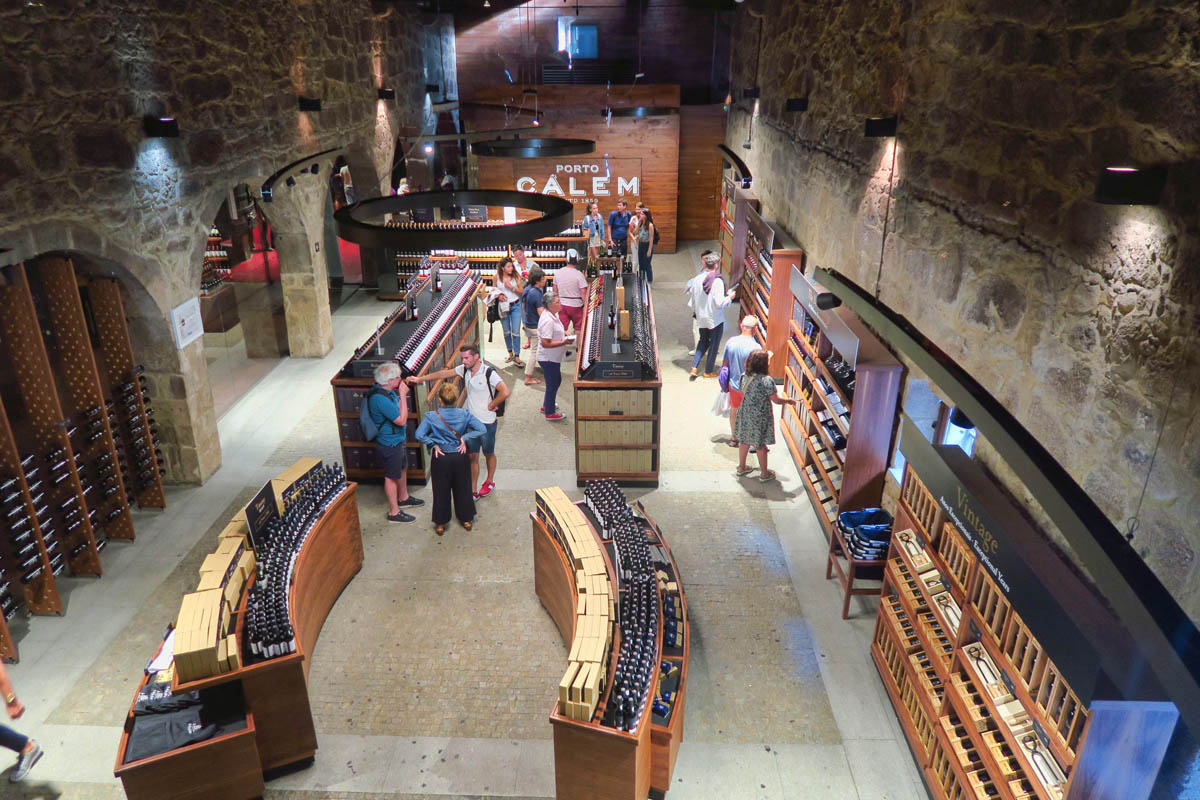 Looking down over the showroom, where most all Cálem Port wines and Porto souvenirs can be purchased. 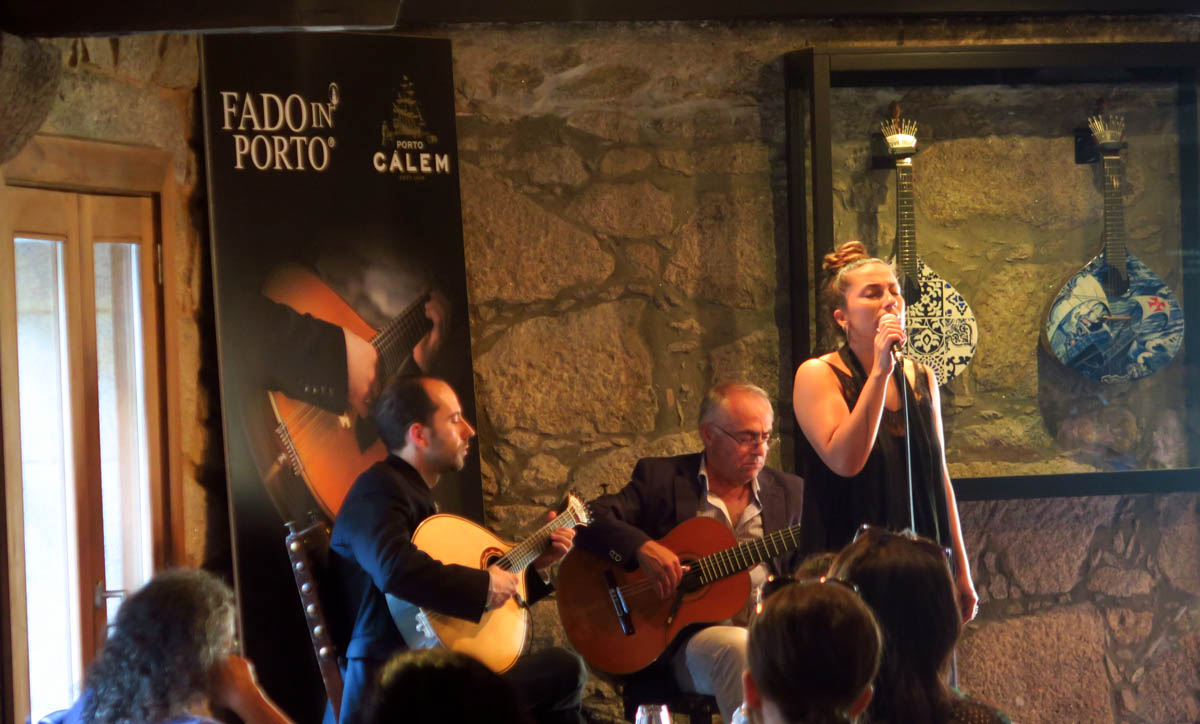 Following the tour, there is a Fado Concert during the tasting.

I made my second choice based on Fabio’s recommendation. He suggested Graham Port Lodge as his favorite. It was also purported to be Winston Churchill’s favorite as well. 😉 It’s one of the nicer, more elegant tours. Graham’s has been in business since 1890, and is family owned. It’s a more intimate experience, as they keep their tour groups to a smaller number, and operate on advance reservations only, no walk-ins. 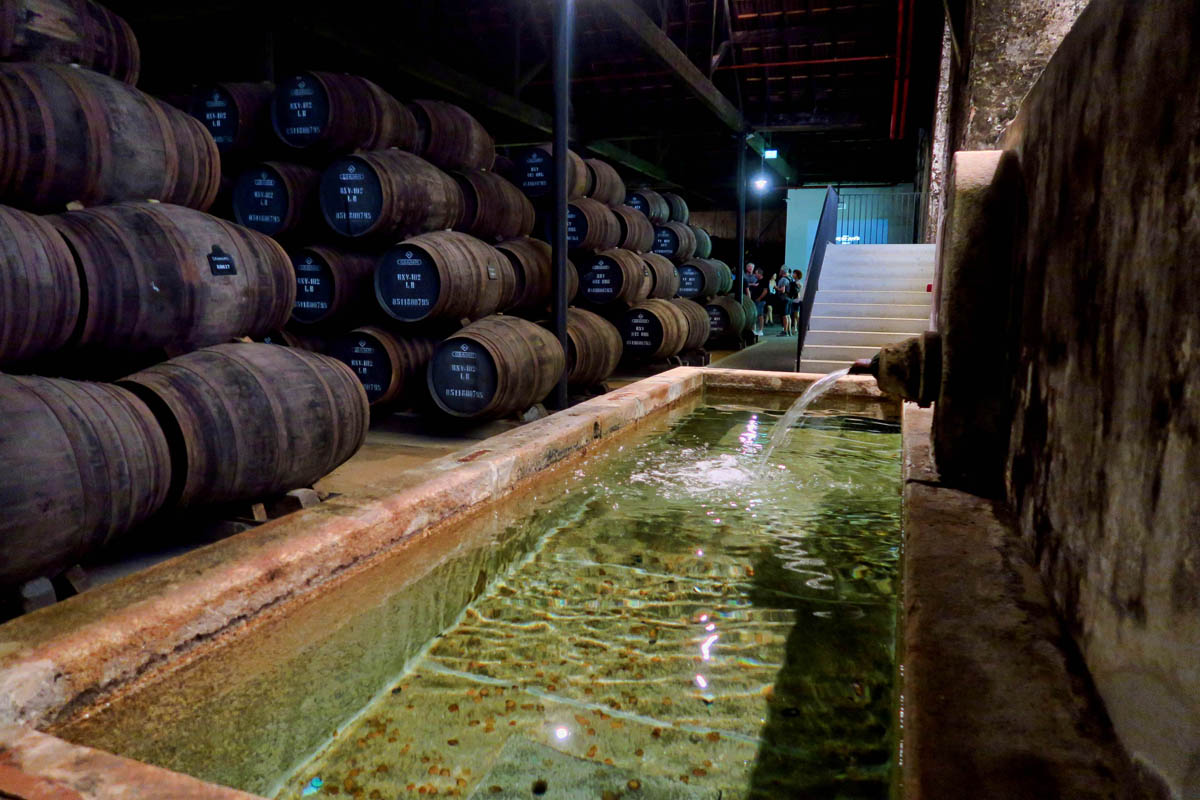 The other Port Lodge tour I participated in was at Graham’s Port Lodge. This fountain provides necessary humidity for proper barrel aging. 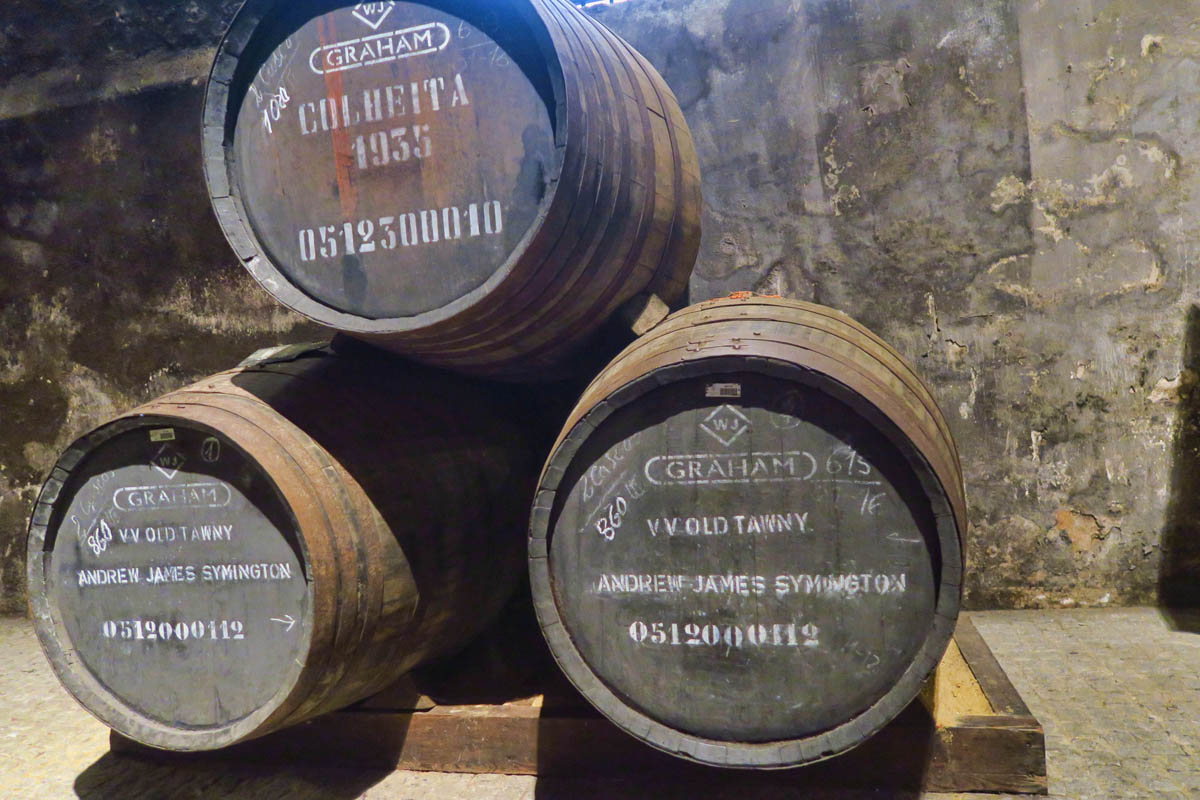 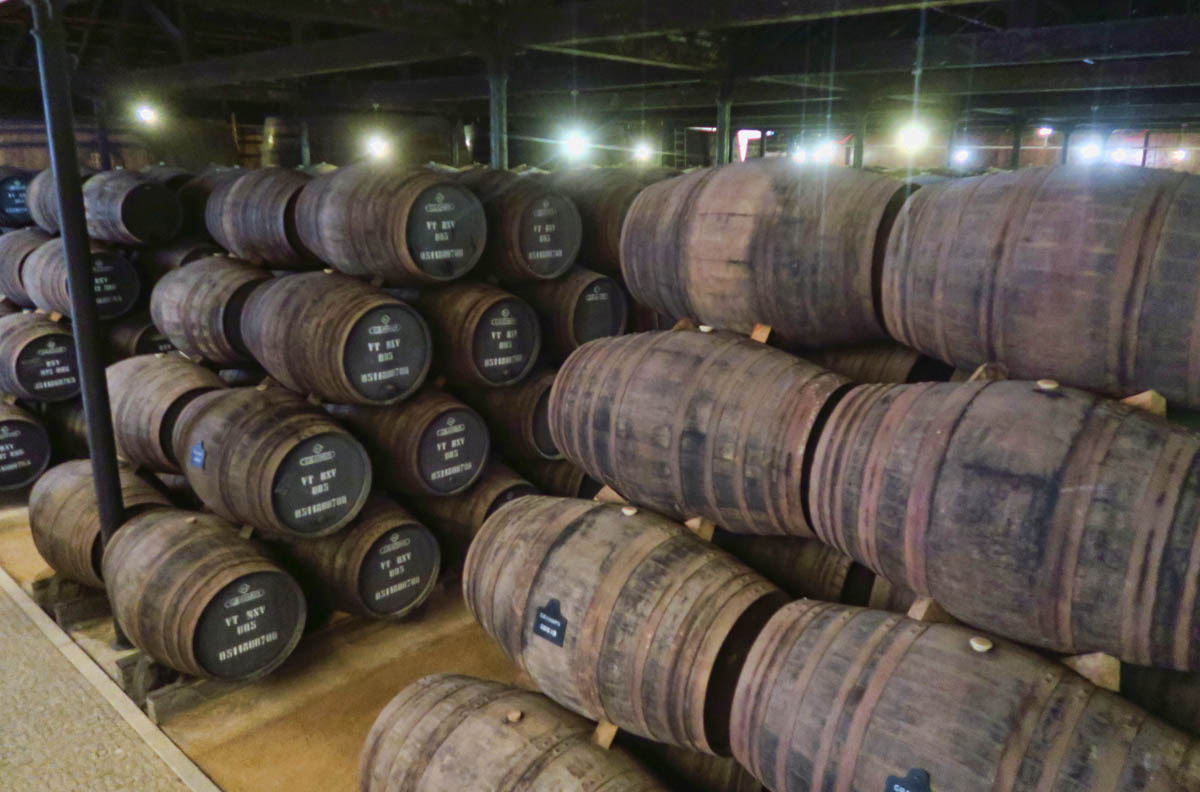 Much on this tour reminded me of my visit to the Kentucky Bourbon Trail in 2017. They talked of the “Angel’s Share,” the essence that is released as the wine evaporates through the porous oak casks. The musty, heady, sweet smell in the warehouse was a pleasant reminder of the bourbon distilleries I had toured. 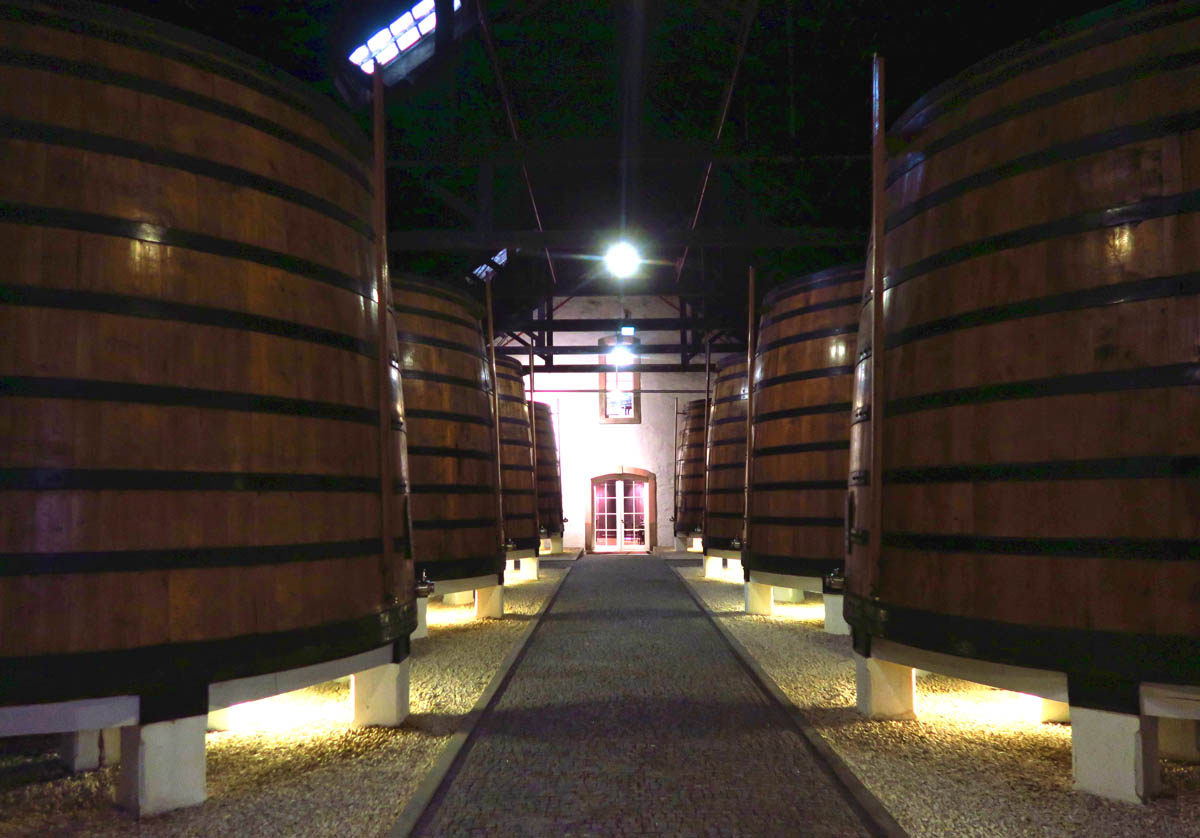 Graham’s has it’s own cooperage, making their own barrels. 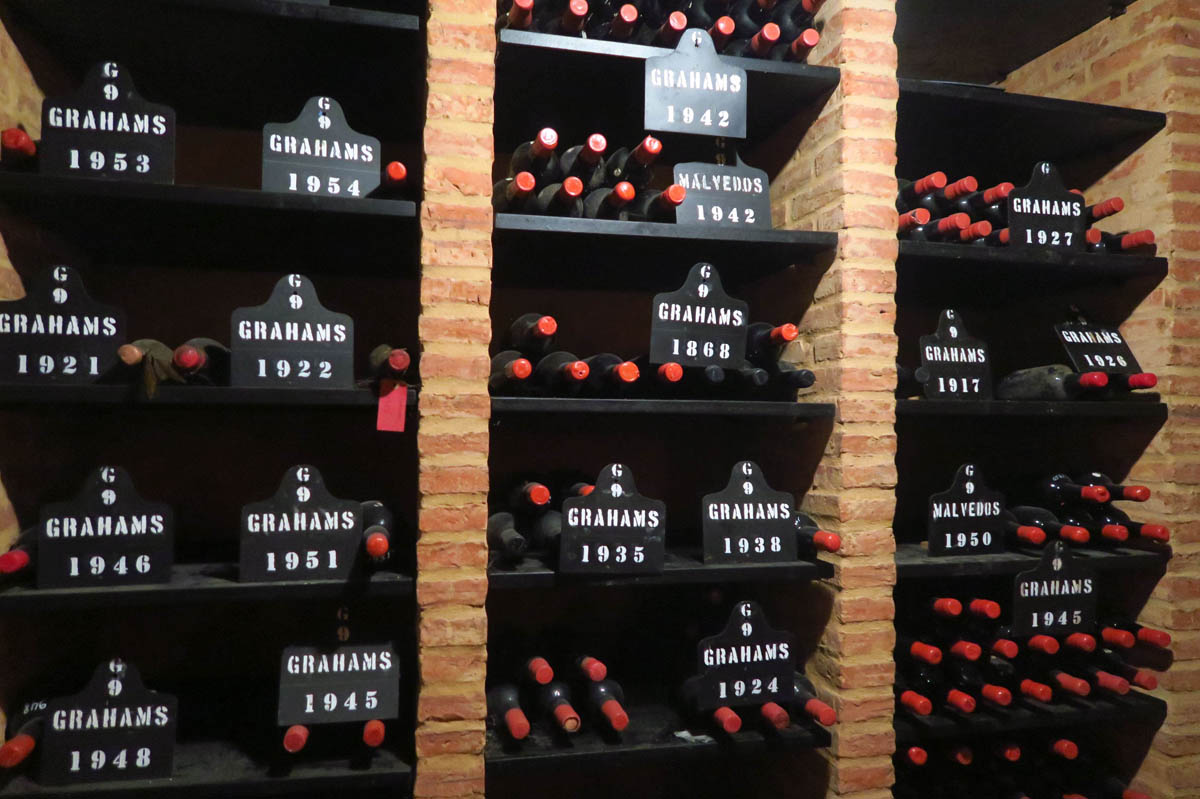 We are told by our tour guide to look for our birth year in this section of older vintages. You will find me, top row, second from left. Only one bottle remains. Must have been a very good year. 😉 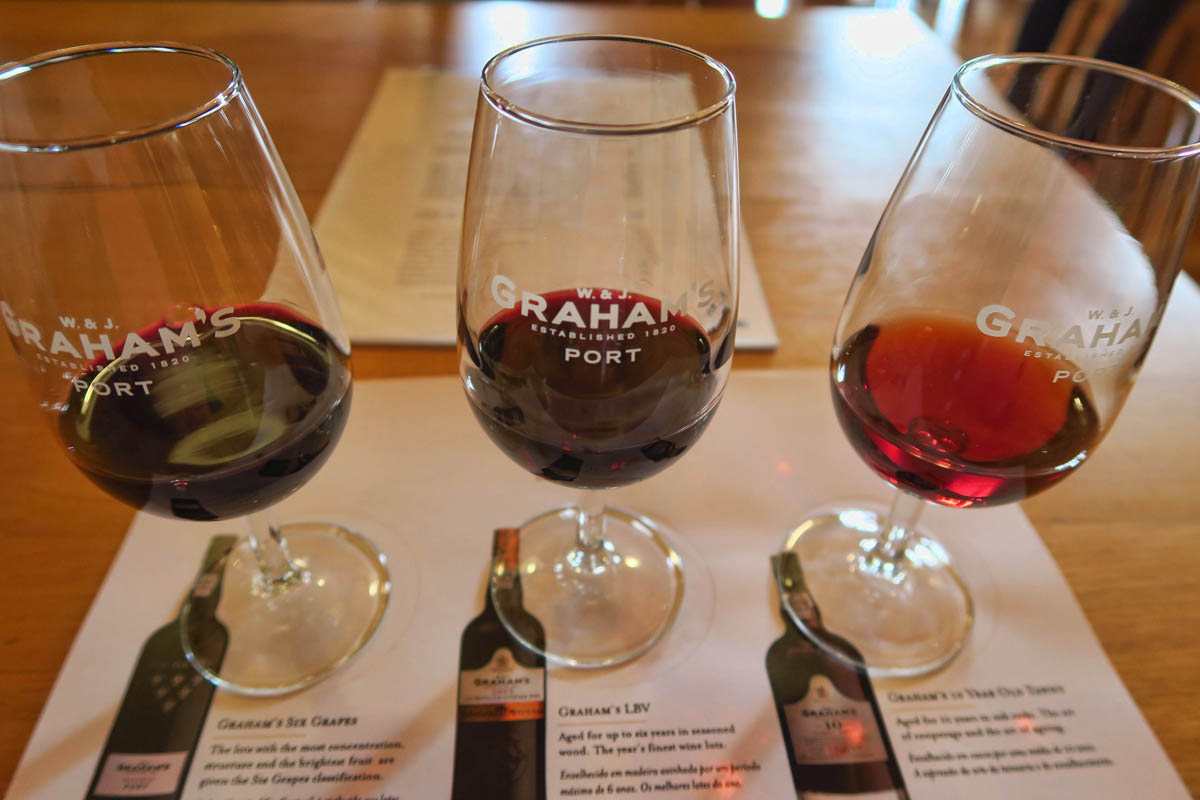 At Graham’s Lodge, one chooses the selection they would like to try during the tasting. I went with the cheapest option. LOL! Six Grapes, LBV, and 10 Year Old Tawny. I liked the Tawny the best. 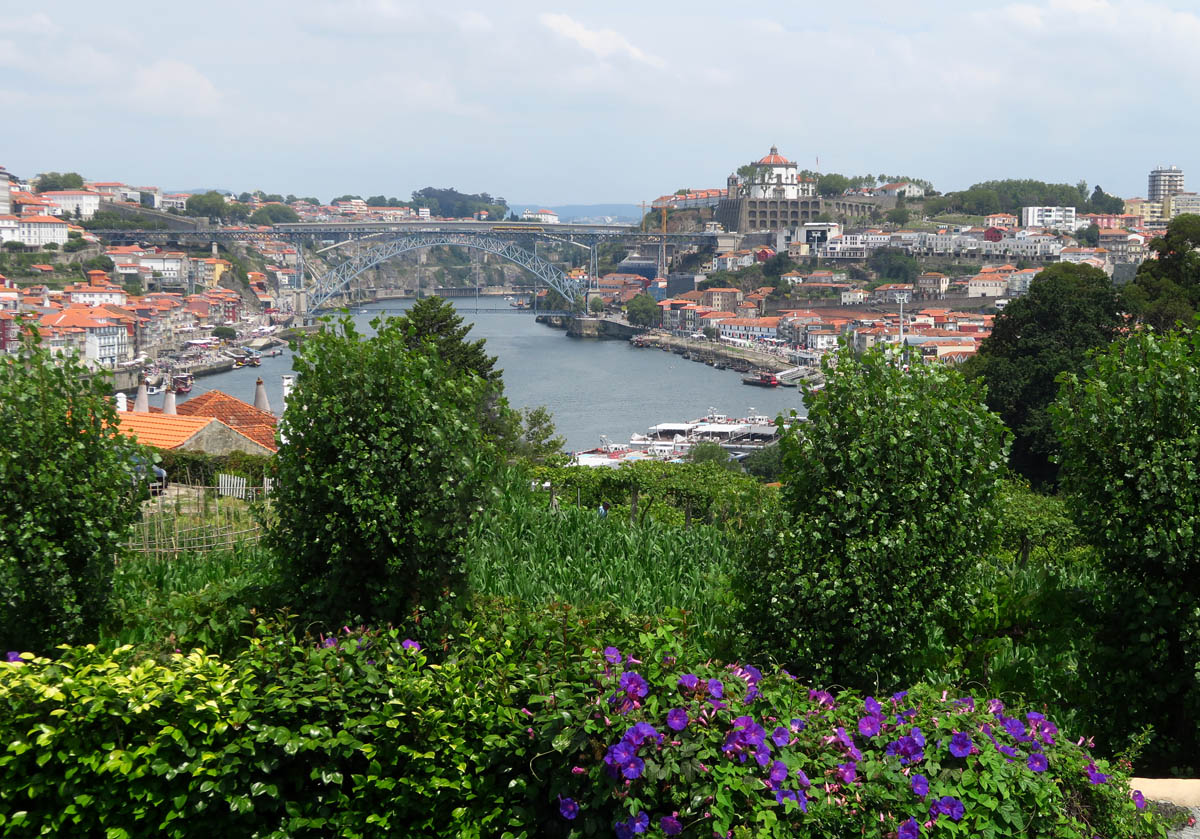 Graham’s Port Lodge has a beautiful terrace, bar, and restaurant. While the menu was a little too pricey for me, I did enjoy a nice glass of Tawny while I “drank” in the view!

I learned so much during these two tours, mainly that there are so many more types of Port than I ever realized; White, Rose, Colheita (made from grapes all harvested within the same year, aged for seven years,) Vintage (made from the best “declared” grapes,) LBV (late bottle vintage, usually bottled four to six years after harvest. The contenders that didn’t make the cut for “vintage.”)

In the past while perusing the “Portugal” aisle of the liquor store staring at the dark, stocky bottles, wondering what the difference was while trying to figure out which was best, I resorted to the uneducated buyer’s guideline of “price,” because it was the only differentiating factor available to me beyond color. So it was fascinating to learn about the varieties, and the process to bring them to market. But the biggest revelation for me was that the two main types of Port available in the US to the casual consumer, “Ruby” and “Tawny,” both start out as the exact same red wine. 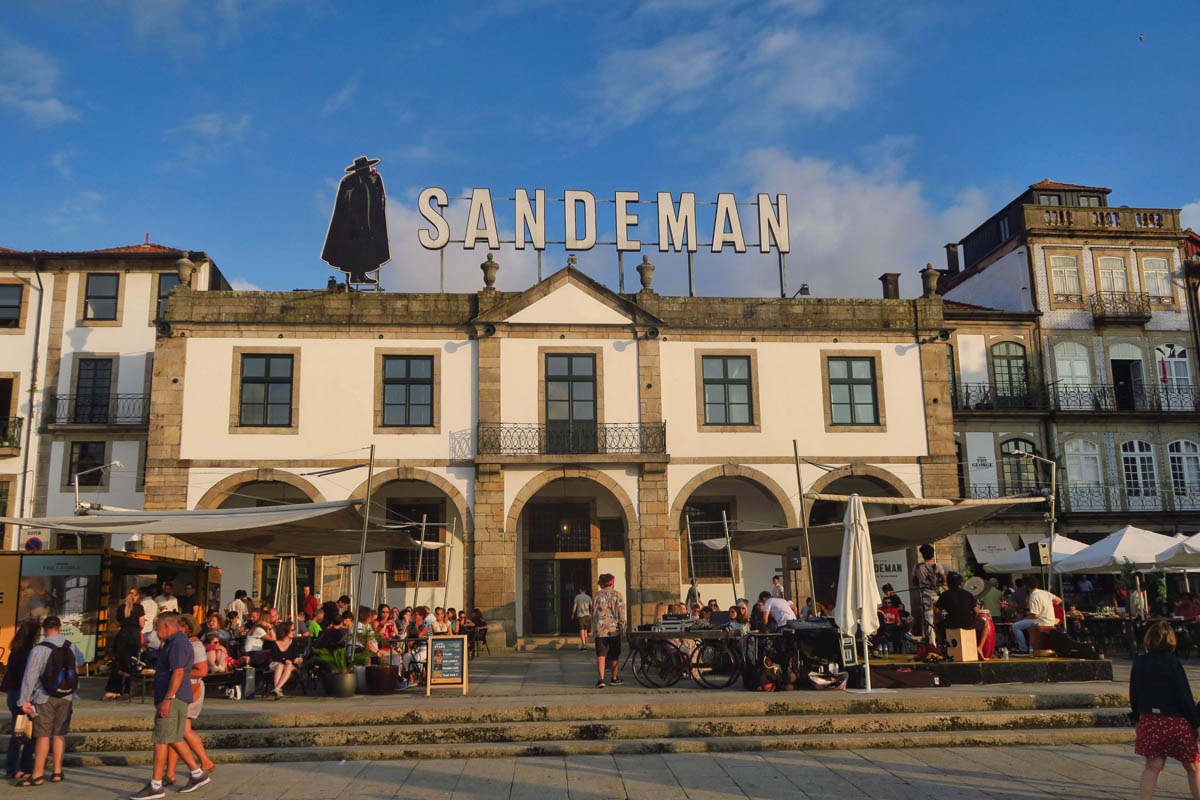 One could easily spend a week doing all the tours of the famous Port cellars, but I think it would be as Fabio said, they would soon all start to sound alike. 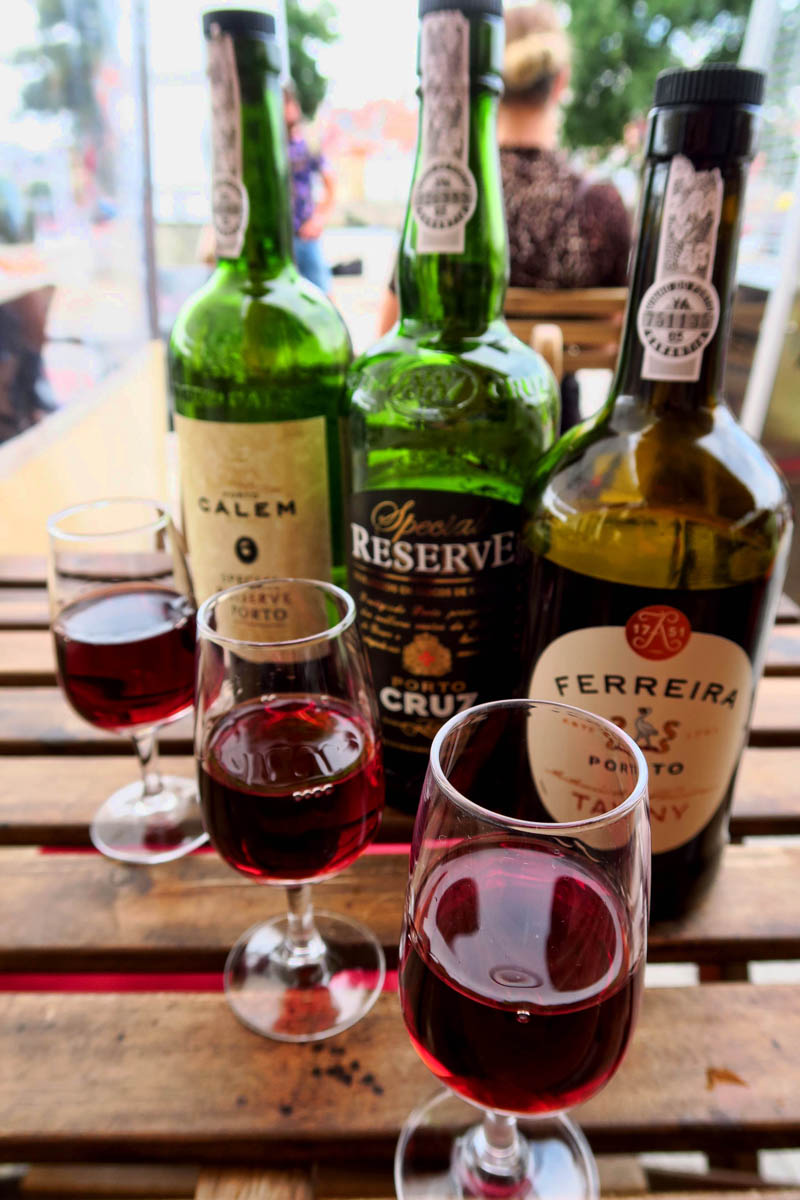 Better option is to take a couple of tours to learn about the process, but spend the rest of your time sampling from cafes along the riverfront! 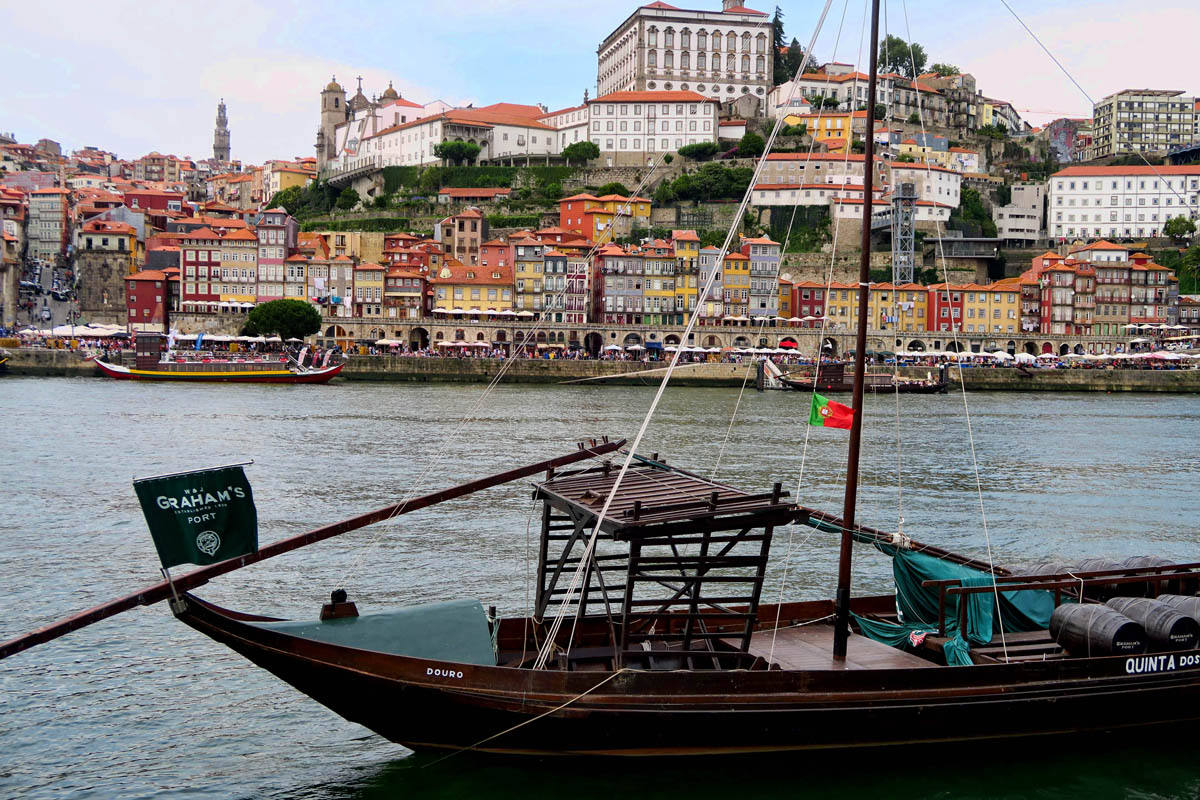 The view looking back across the Douro River at the colored houses in the Ribeira district. 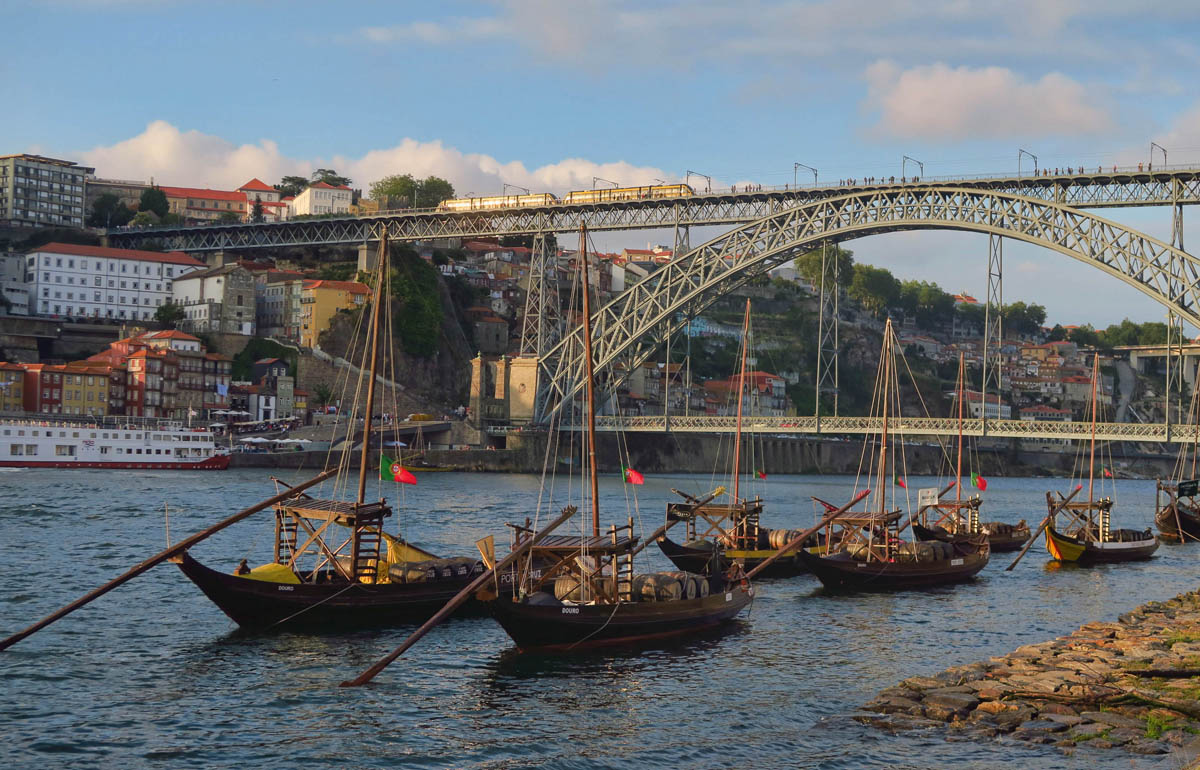 Traditionally, the wine was taken downriver in flat-bottom boats called “barcos rabelos.” However the river has been dammed for hydro-electric power, and locks installed as a result now make this method of transport no longer feasible. Wine is now transported to Gaia for aging by tanker trucks, while the barcos rabelos lend ambiance and photo ops to the riverfront.

Since Ruby and Tawny are the mainstream options, I am going to focus on their differences. Leaving the Douro Valley by transport truck, the “grape juice” arrives in Porto to the cellars for aging. Initially, it starts out in one of the larger vats, sometimes oak, sometimes concrete or stainless steel. Regardless of the type of container, Ruby only ages for a short time before bottling. It can sometimes be allowed to age further in the bottle, but typically not more than 4-6 years. Spending less time in the cask, Ruby is fruitier and retains more of its natural color.

However that’s where their common lineage ends. Tawny undergoes a longer aging process in smaller oak casks, always seasoned, never new wood. It can be aged up to 40 years. Oxidative aging causes Tawny to lose some of its color as the red fades to a cedar-red color by 10 years, and finally into a golden amber with the 20, 30, and 40 year old bottles. Tawny also lasts longer than Ruby after opening, up to six months. I am over-simplifying here, as there are many variations on this aging process. But just know that the oak barrels help contribute to not only Tawny’s oaked, nutty, caramel-like flavor, but also to its greater viscosity as the barrels allow for evaporation.

With all the parallels and similarities in sight, smell, and taste of Tawny to the ageing process of bourbon, when shopping for port wine, I no longer have to wonder which brown bottle to choose. 😉 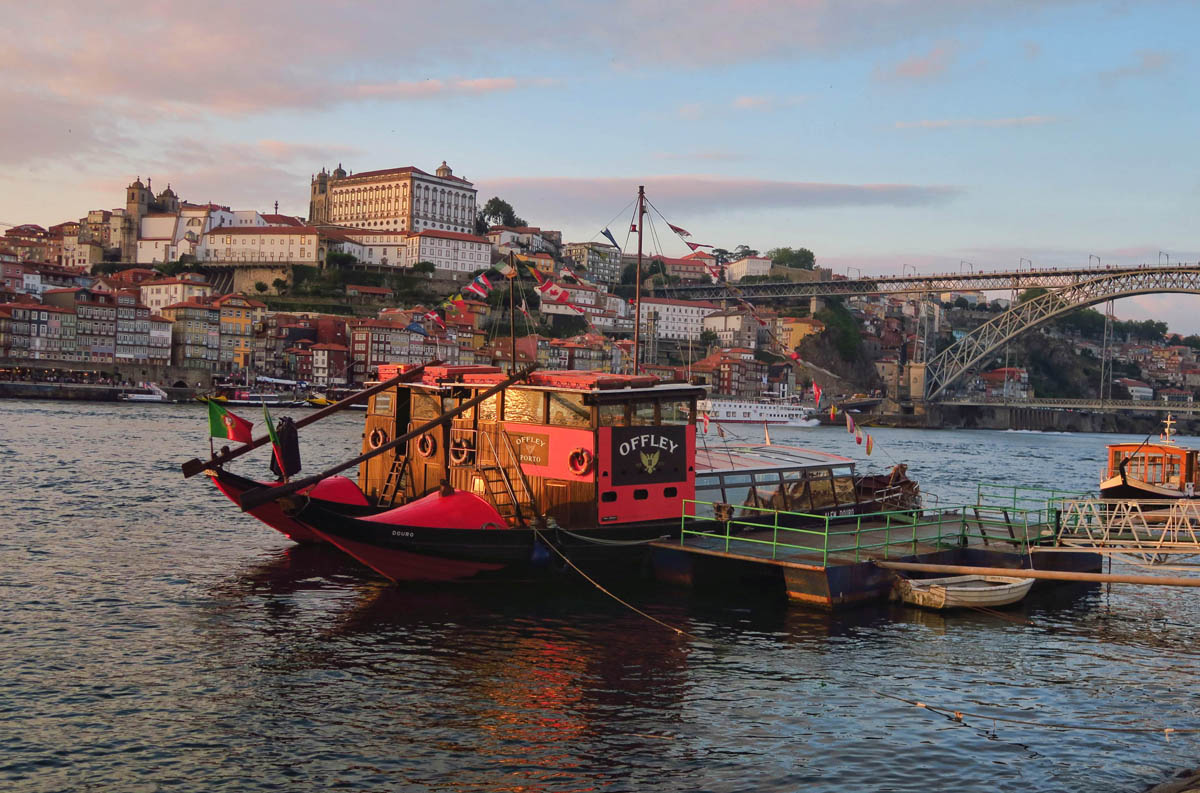 Sunset is a magical time along the riverfront from either side. 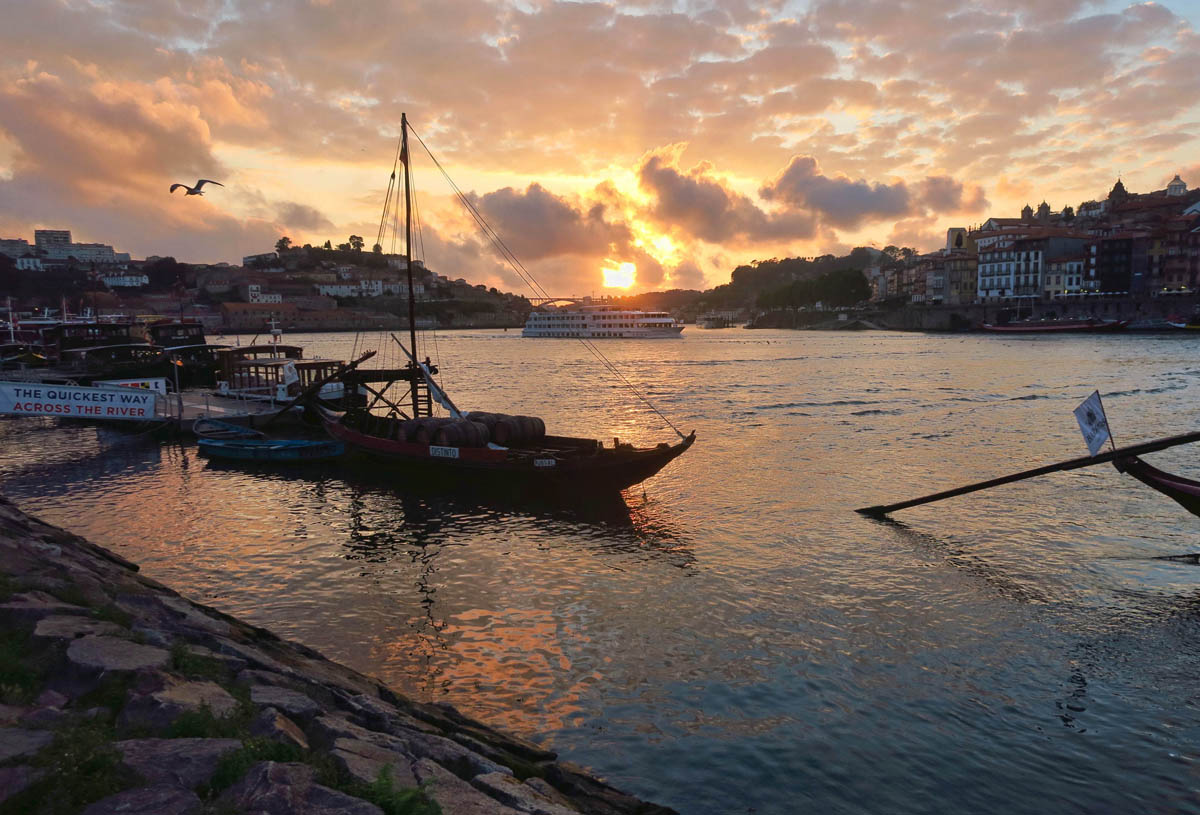 On the left, you see the ramp for the water taxi, “Quickest way across the river!” 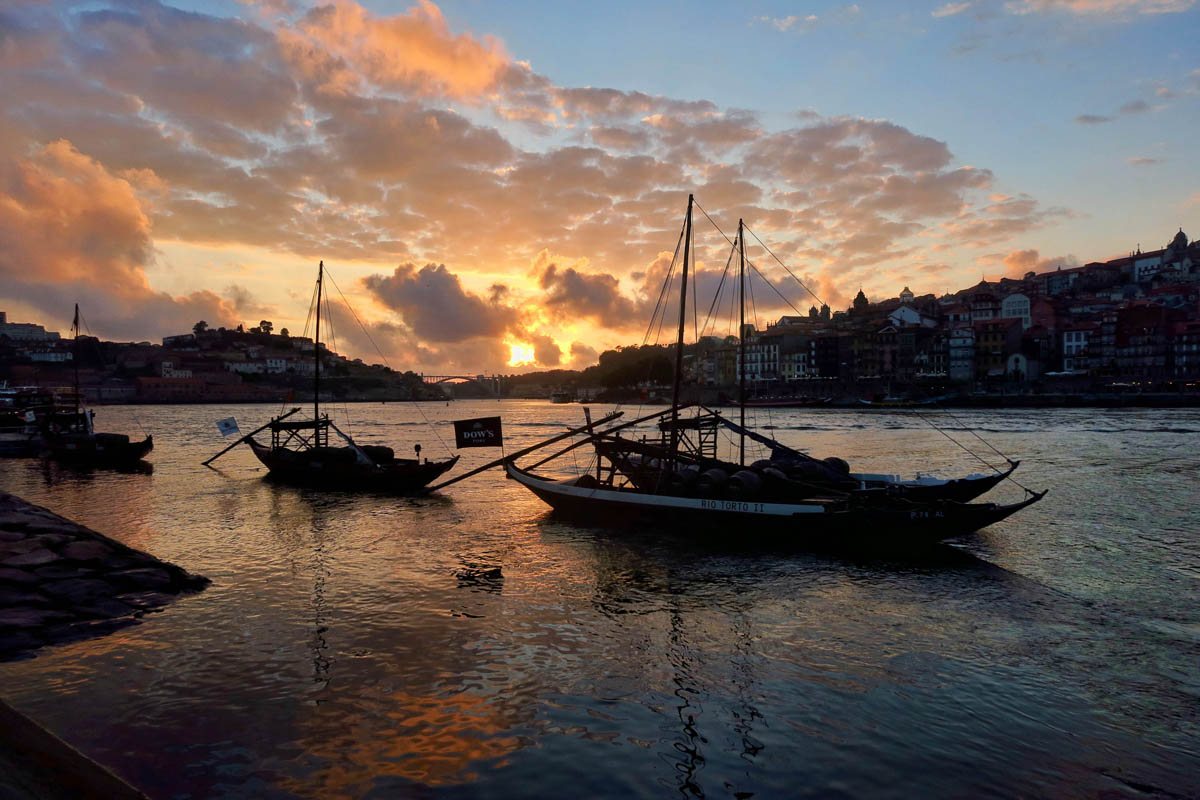 At sunset, the Douro River takes on the colors of the sky. 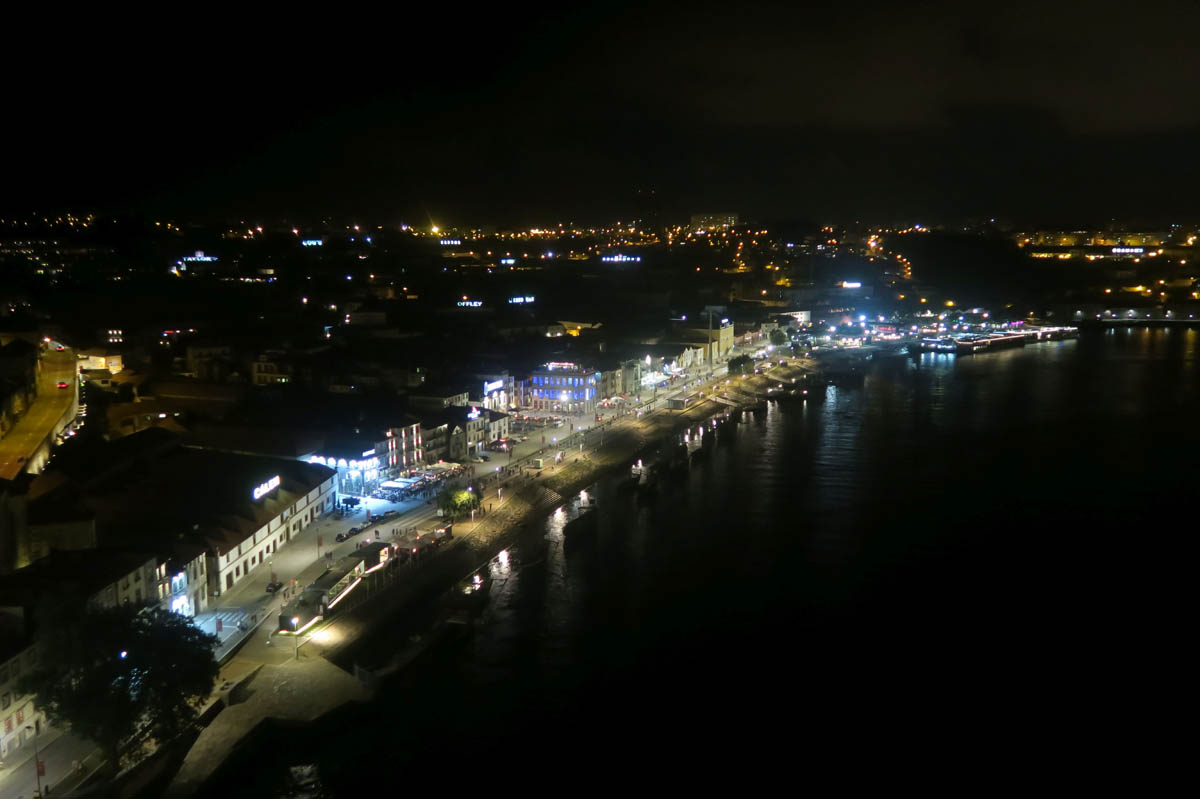 A walk back across the upper level of the bridge as the lights of the Vila Nova de Gaia reflect on the river.

6 thoughts on “Vinho do Porto in the Making”