Once I left New Mexico, I moved pretty fast toward the Pacific Northwest, driving long days capped with Walmart or casino parking lot nights. I had one goal, to make it in time to attend the volunteer orientation for the 43rd annual Wooden Boat Festival. 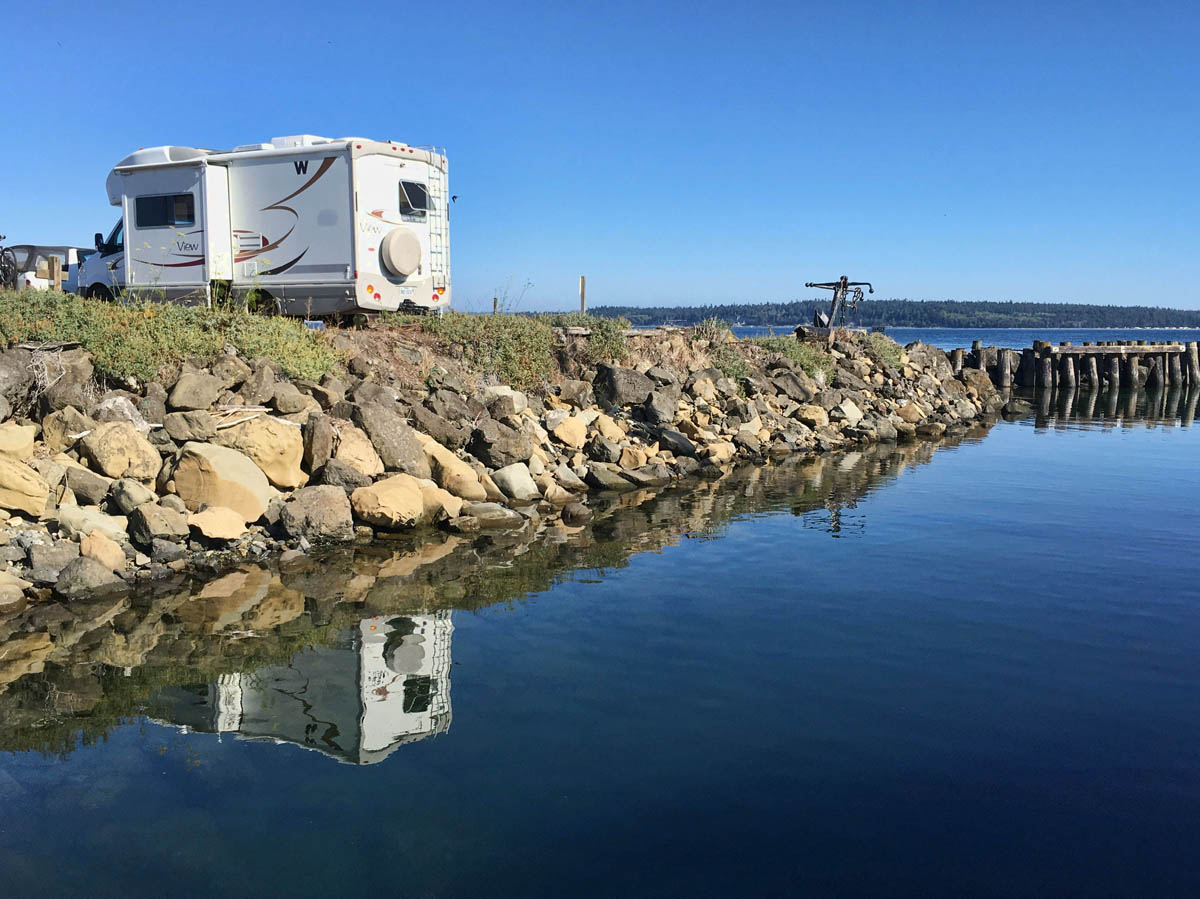 Backed in to my favorite parking spot. 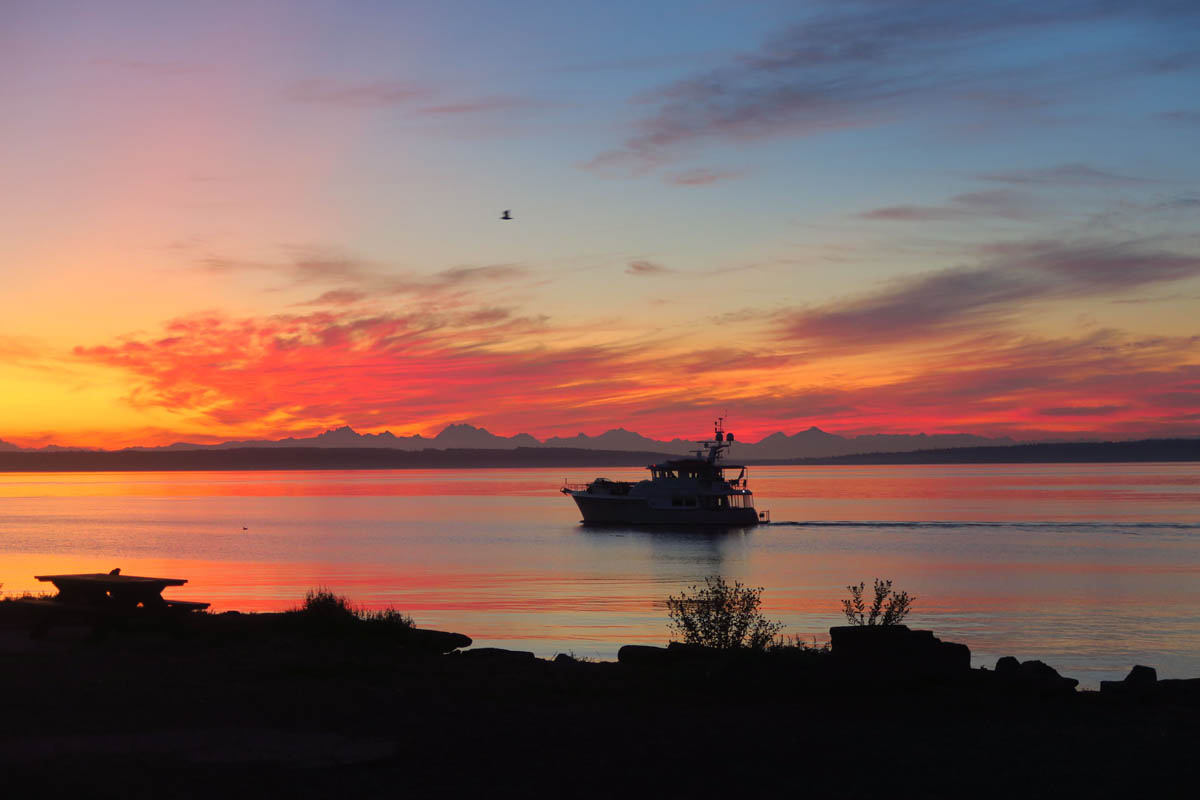 I can see boats sailing past out my windows from a 270° view, including from my bathroom. 😉 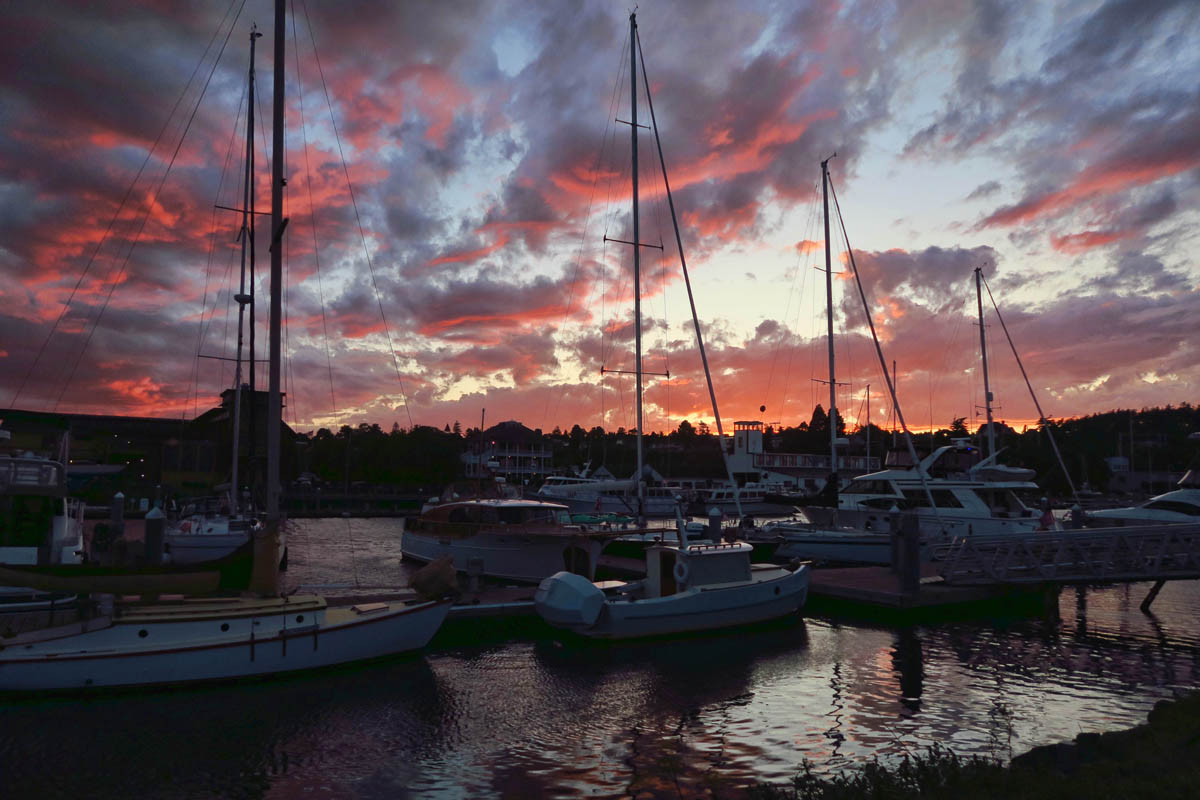 The sunsets seemed even more gorgeous this year. 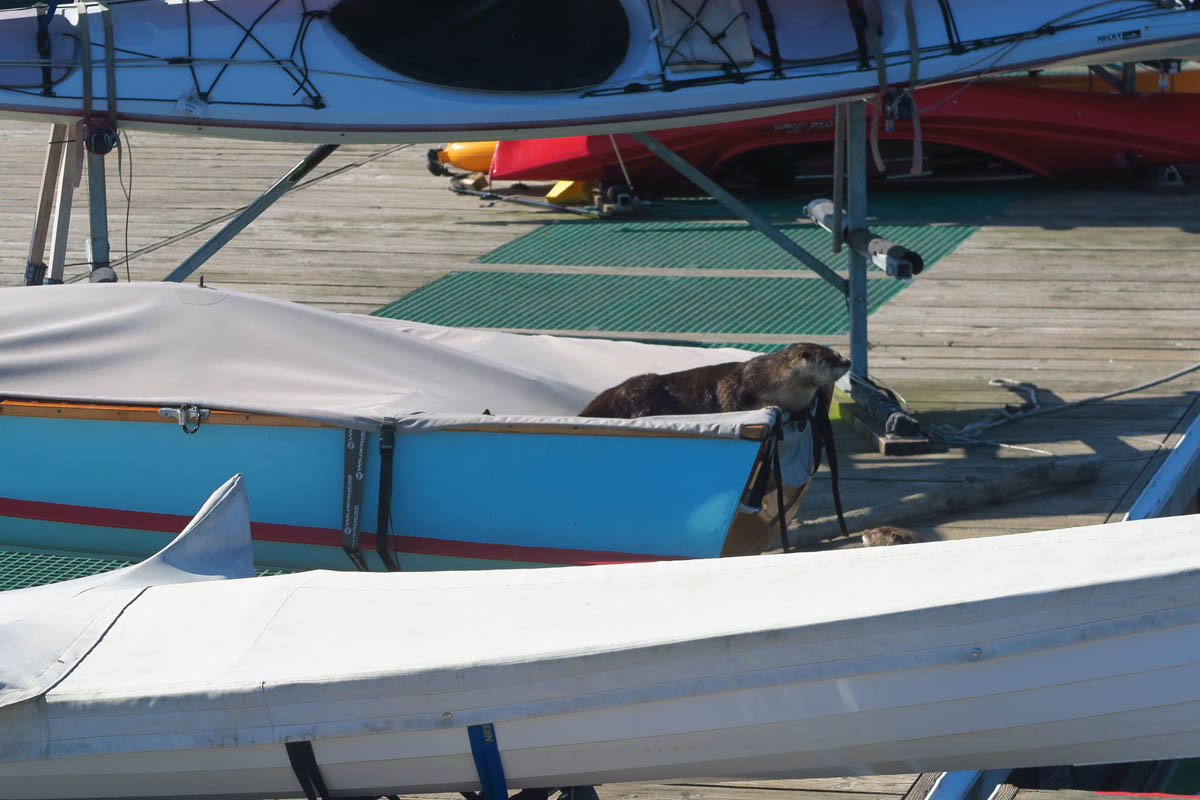 There is an otter family in residence at the marina this year. Note them lazing in the sun atop this boat cover mid-photo. 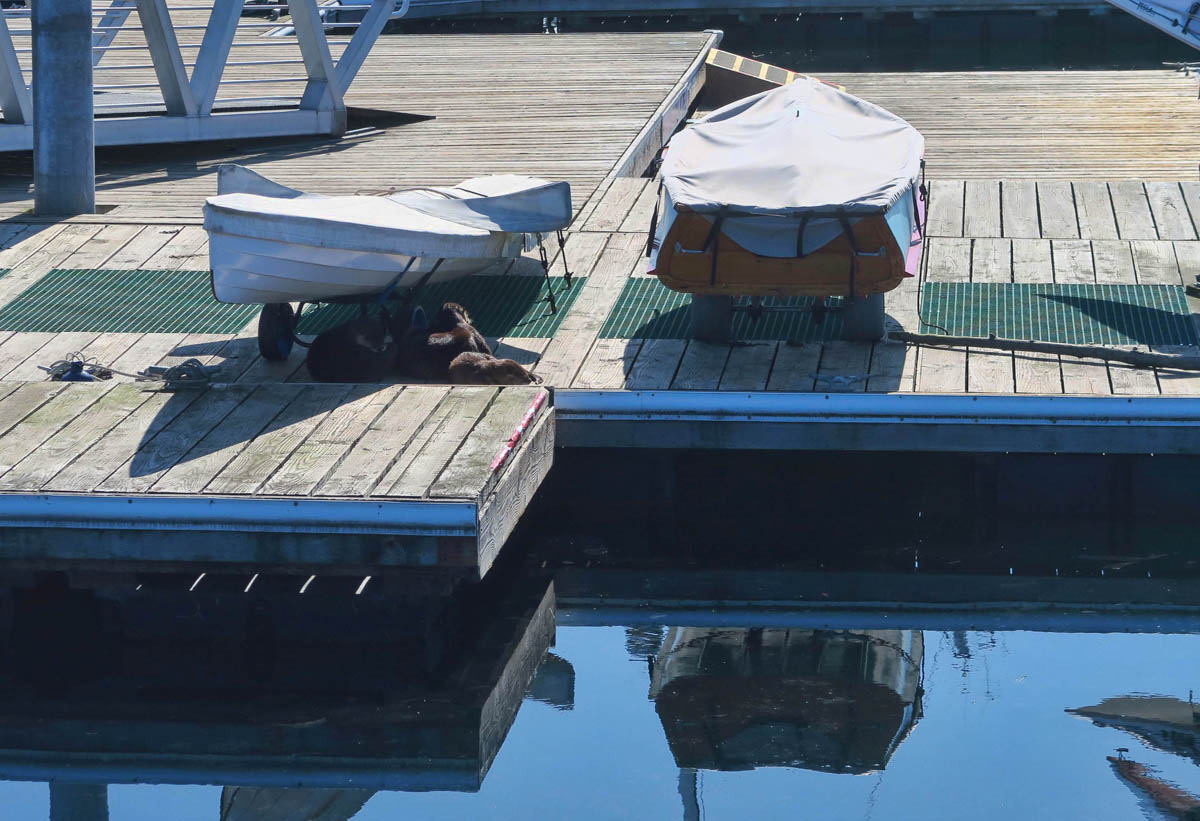 As the paparazzi started to gather, the otter family slithered down beneath the boat, one by one. 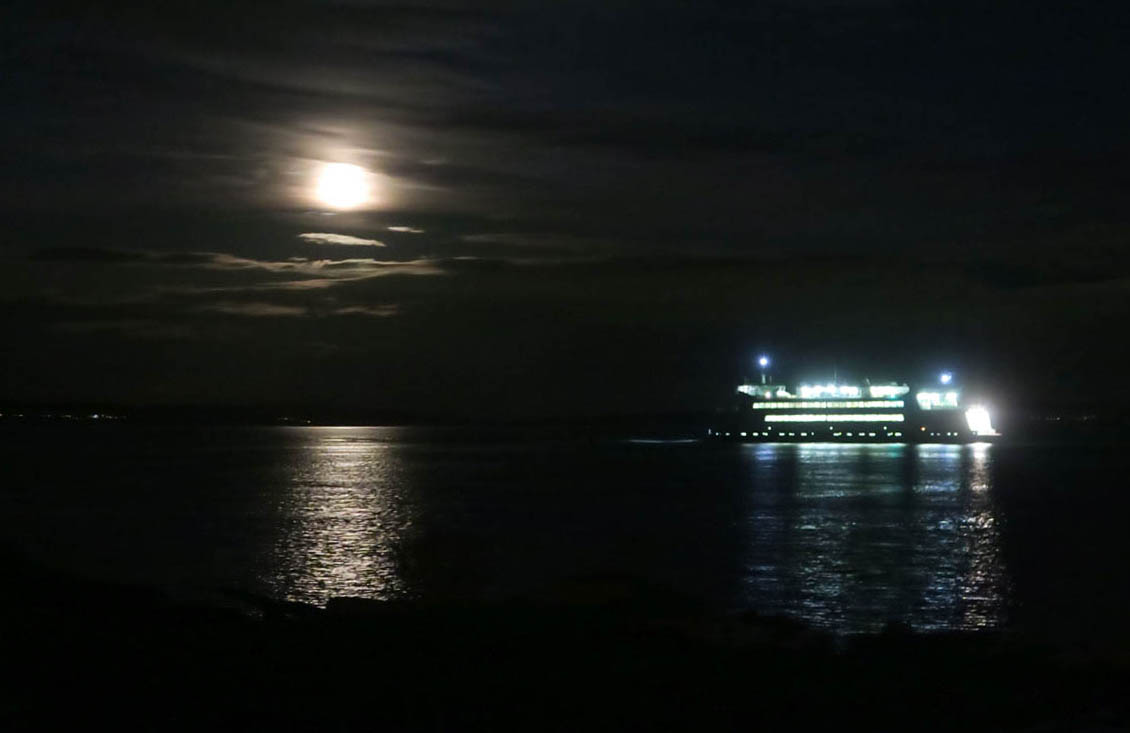 I got to watch a full moon right from my bedroom window this year. On the right is the ferry to Coupeville.

While I thoroughly enjoyed every aspect of the Wooden Boat Festival back in 2016, I decided to take a different approach this year and experience it from the inside out. I wanted a “behind the scenes” experience, with a chance to interact with more locals from my favorite town (which shall remain untagged in this post so as not to contribute to the out-of-control growth the area is currently experiencing.) So instead of being a spectator for three days, this year I would work as a volunteer!

The volunteer staff was 600 strong at the Wooden Boat Festival this year, a number which shocked me out of my socks. I expected maybe half that number. Another bit of trivia I learned this year, the PT festival is the second largest wooden boat festival in the world, second only to Tasmania, Australia. So with an expected attendance of over 40,000 over the three day festival, it’s easy to see how volunteers play such a vital role, from set-up to tear-down, and every movement in between.

The WBF volunteer program runs like a well-oiled machine, due in part to the enthusiasm of the high-spirited coordinator, Angela. From the orientation meeting, where volunteers are issued their “CREW” tee-shirts and a check-list for how best to prepare for their shift, to the incredibly fun, fully-catered after party, Angela acts like a cheerleader, showing appreciation and motivating volunteers to take ownership in what she refers as “your festival.” Each shift earns a 1-day pass, however signing up for three shifts gets you the full volunteer benefit of free tee-shirt, 3-day pass to the festival, and volunteer appreciation party afterward. 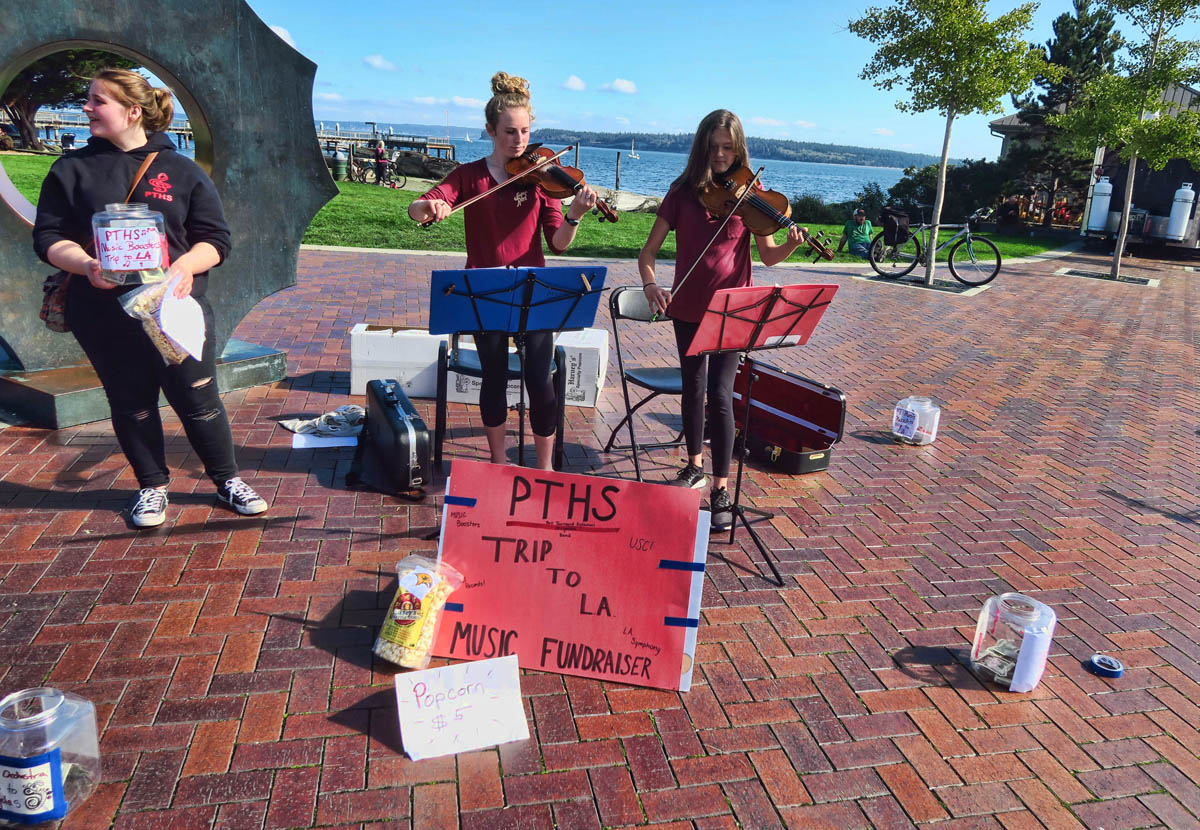 The local high school band is having a fundraiser. I just love that not only are they selling popcorn, they are also giving a lovely violin street performance. 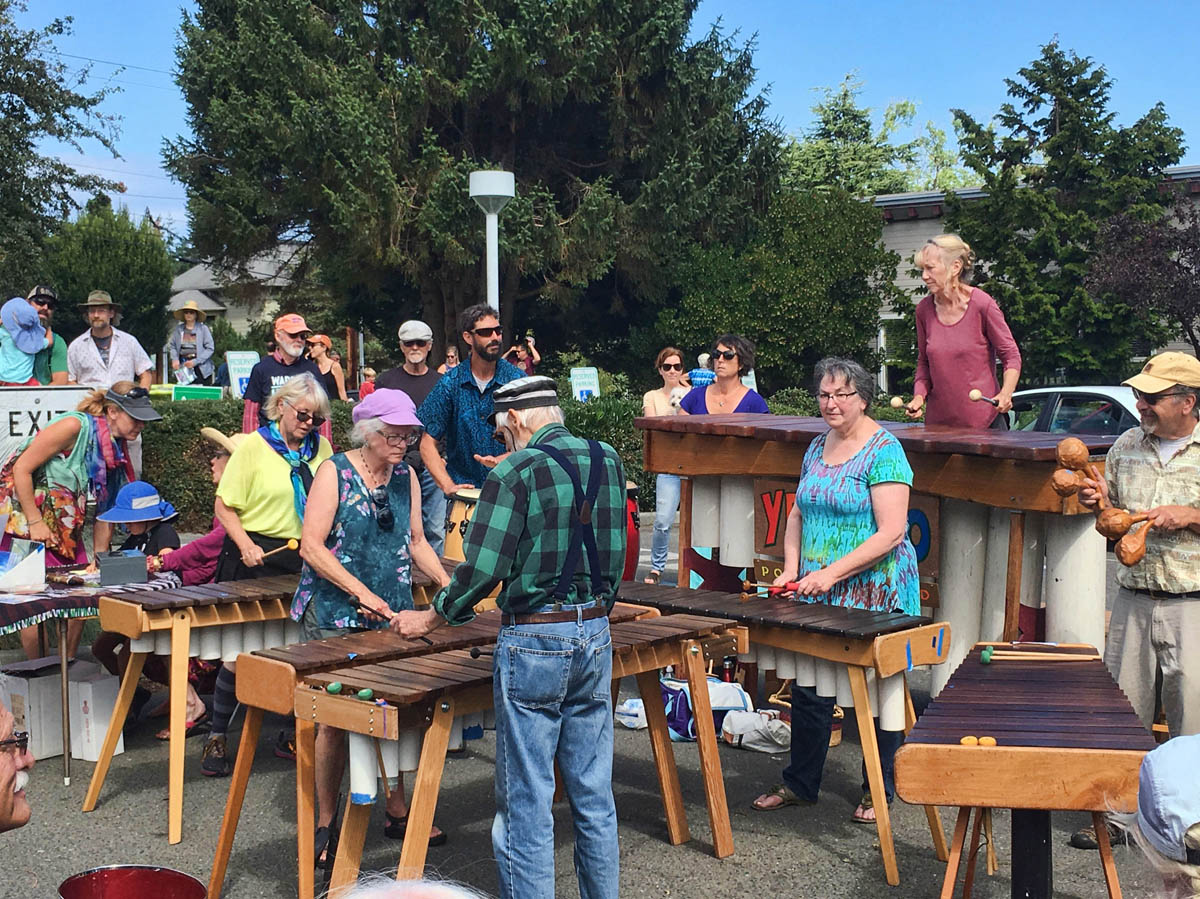 One of the many reasons I love it here so much is because of the musical orientation. Here, a group of locals perform on half a dozen xylophones at the Saturday Farmer’s Market. 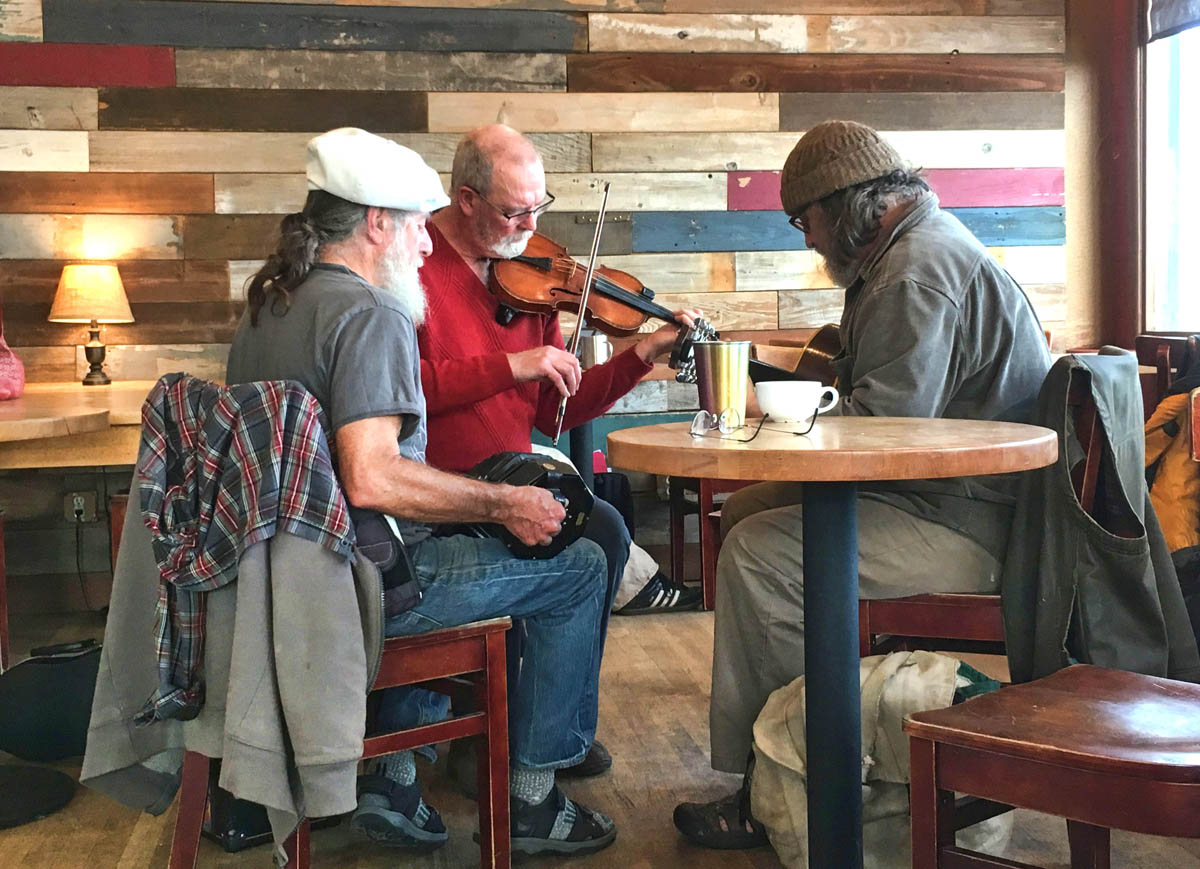 My favorite coffee shop, “Better Living Through Coffee” has live music every Sunday at 5:00pm. This was my favorite ensemble. 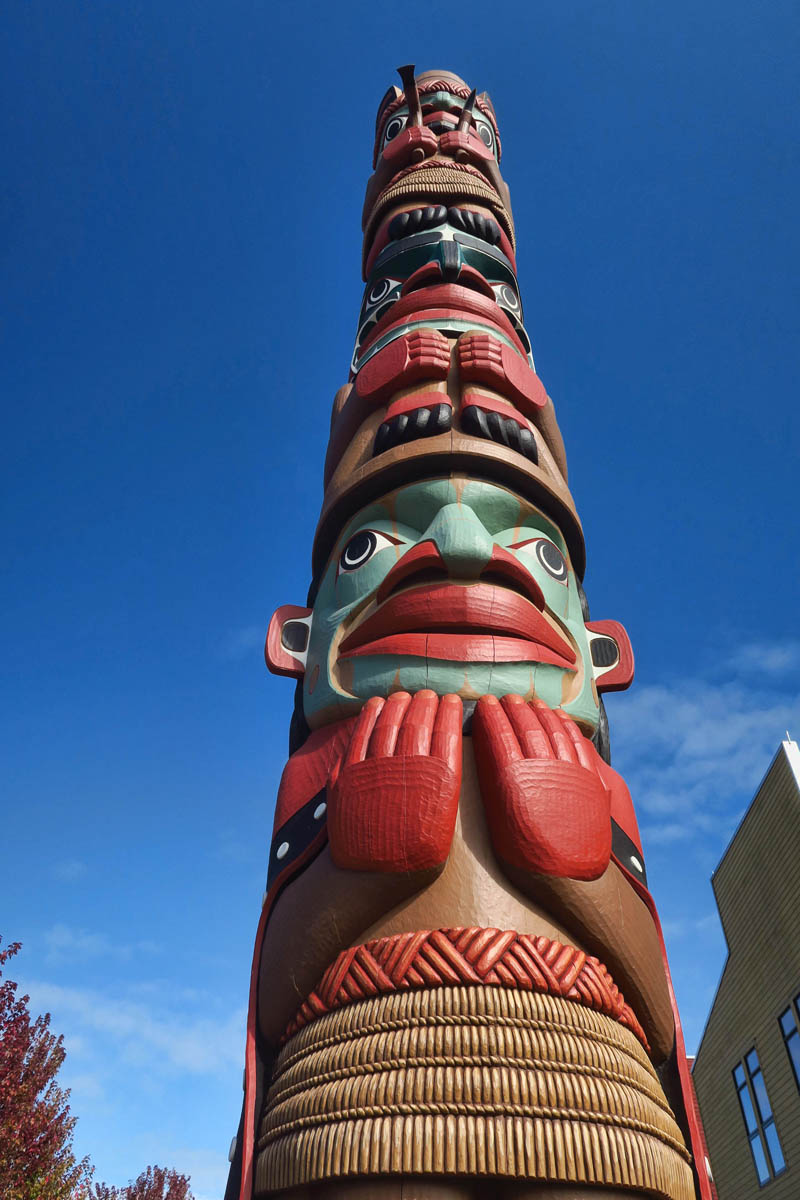 Local Town Totem Pole pays homage to the craftsmanship of wooden boat building, and the artisans dating back to the S’Klallam People, long before the white man arrived. 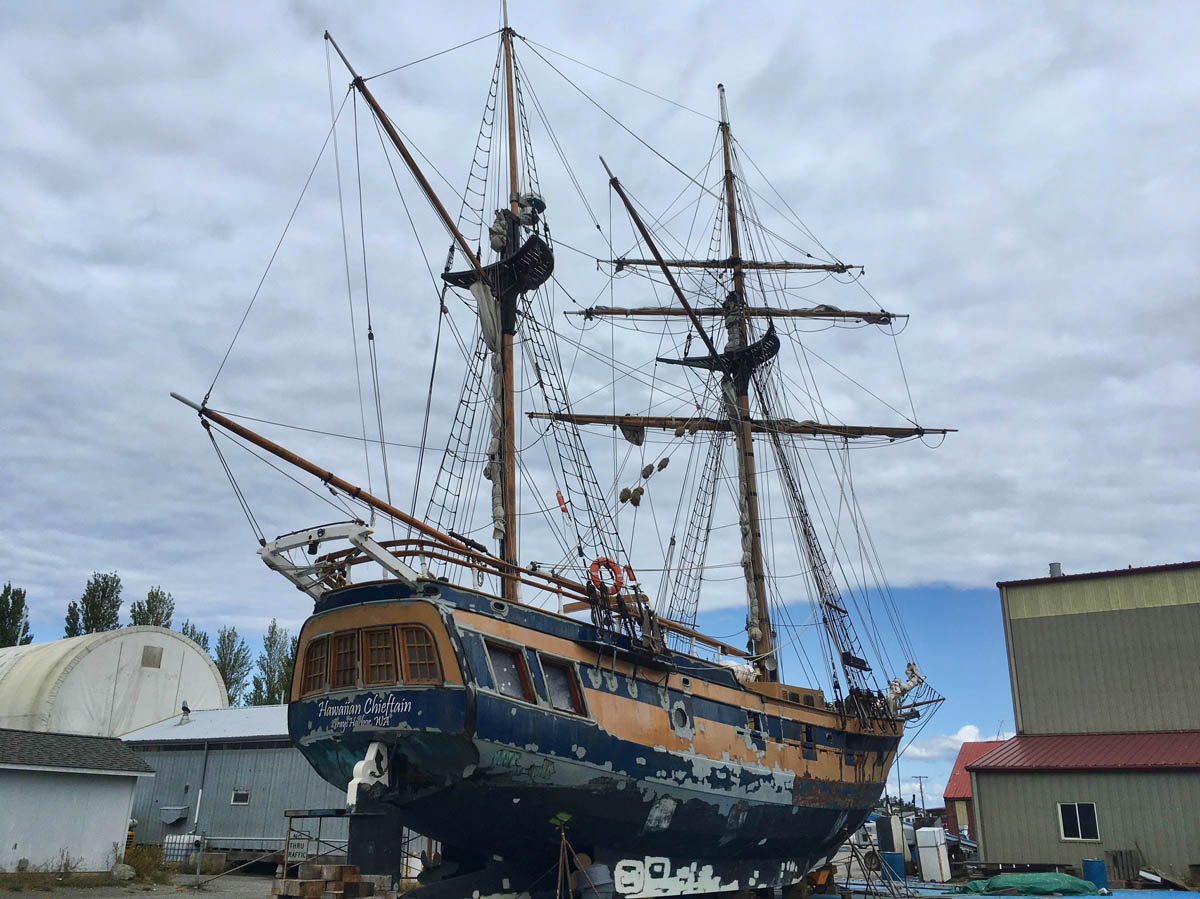 One of my favorite pastimes is walking to the boatyard and looking at all the reconstruction projects underway.  It’s just the right distance from the marina to achieve my 10,000 steps for the day.  Has nothing to do with the fact that there is a brewery in the boatyard.  😉 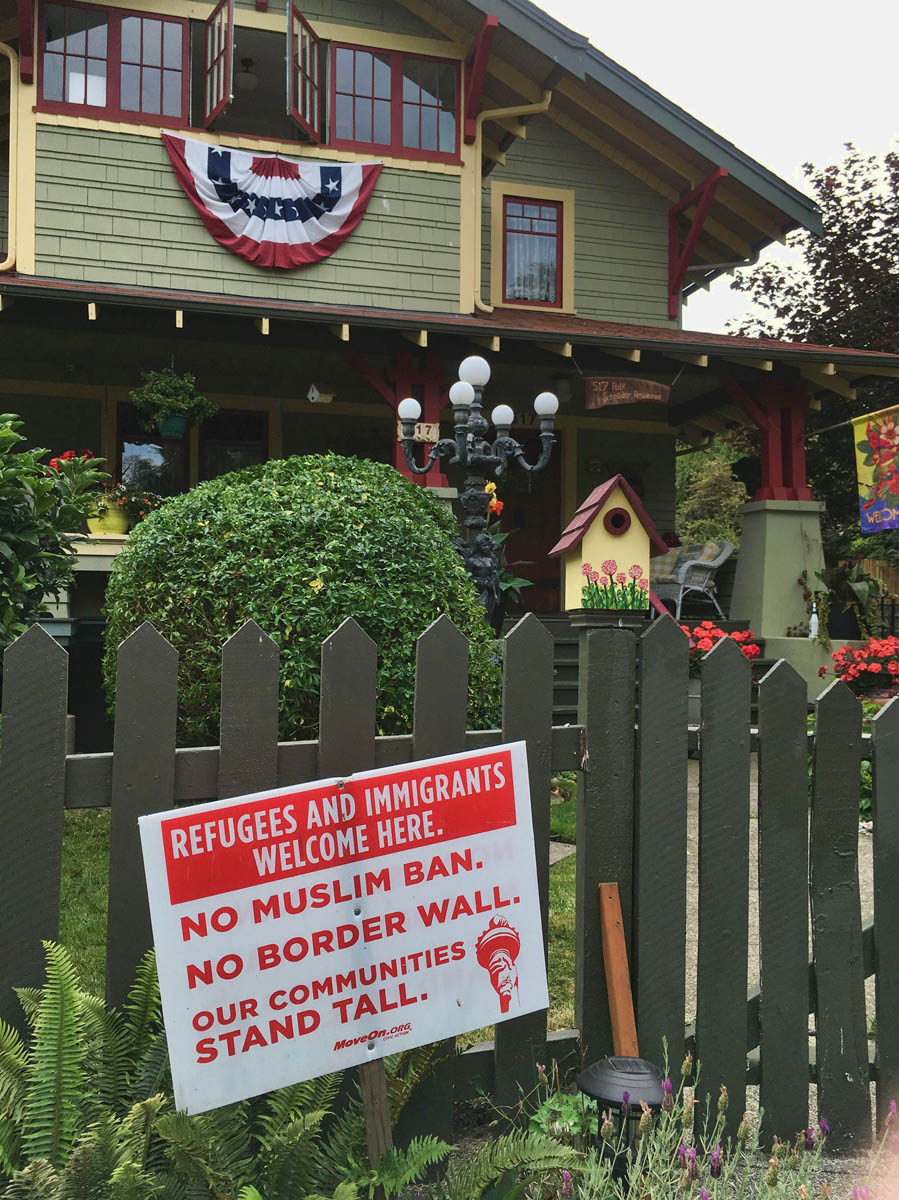 Yet another reason to love it here…a very welcoming community.

Since I wanted to be free to attend festival presentations for the full three days, I signed up to help set up meeting rooms prior to the festival, and to help clean up the Maritime Center after the event was over. While this freed me up to attend all three days of the event, I didn’t make it to as many presentations as I did last time due to commute distance to the event. In 2016, I paid the premium price to park the RV right in the middle of the festival at the Point Hudson Marina. It was expensive, but I was a five minute walk to every event. In retrospect, the convenience was worth it. This year, I went the cheaper route, parking the Winnie at the Jefferson County Fairgrounds during the festival, which meant I had to drive into the Park and Ride section and either walk into town from there, or wait for a bus. That took almost an hour out of my day each way. So if I attend the festival again, I will likely pay the premium to be on festival grounds again, immersed in the total WBF experience. 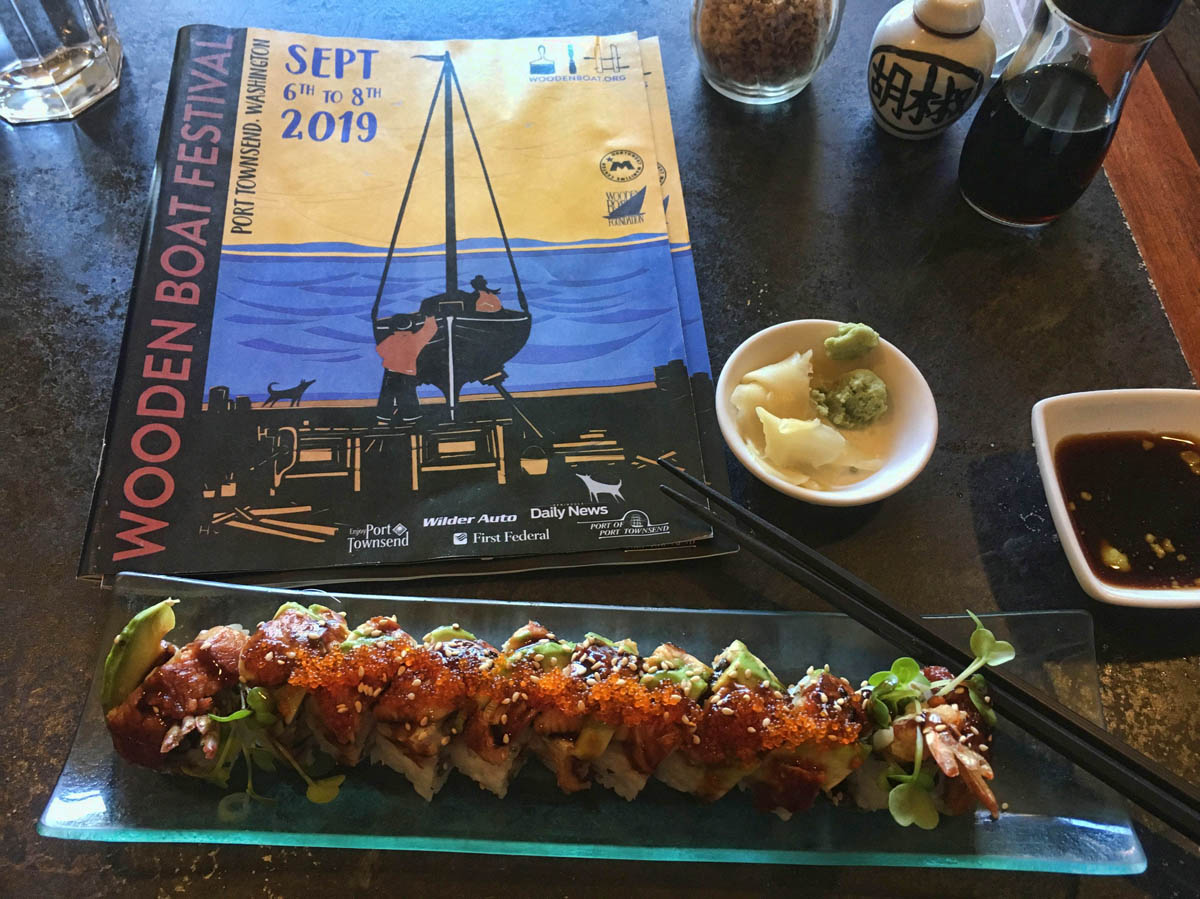 I was excited on the day the official WBF program came out. I celebrated with a sushi roll while I perused the schedule. 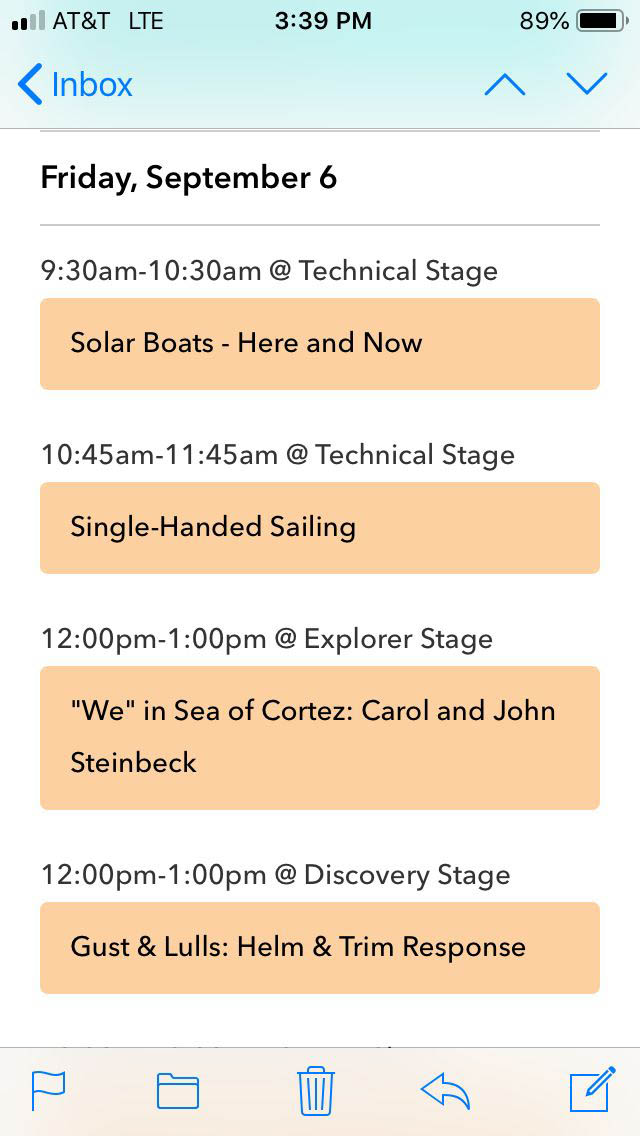 A handy online tool allows one to select their areas of interest in the festival scheduler, and have the info sent to their smart phone. 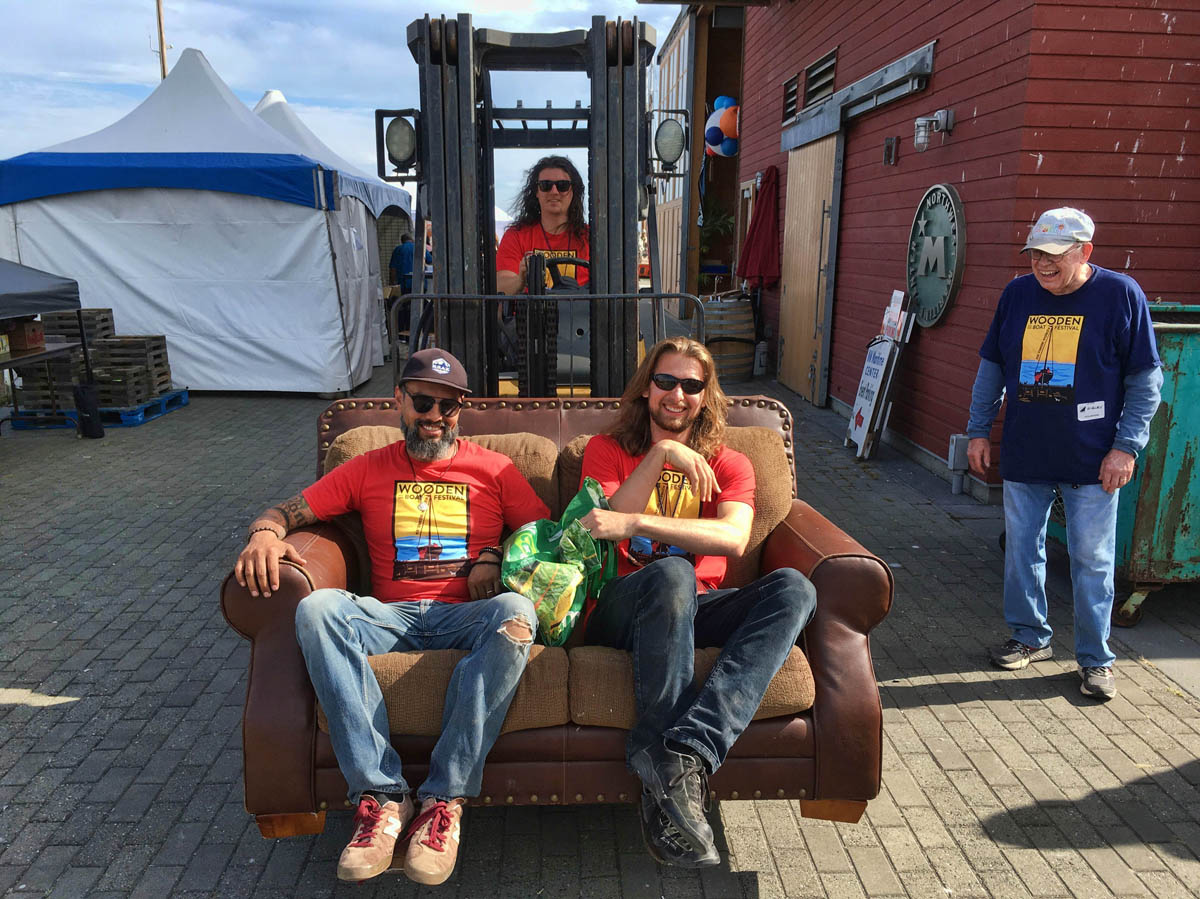 During my set-up volunteer shift, Angela asked me to go retrieve the couch from the Maritime Center, and move it into the Volunteer Tent. She told me to find the forklift driver and recruit some helpers to move the couch.   Do I do good work, or what? 😉 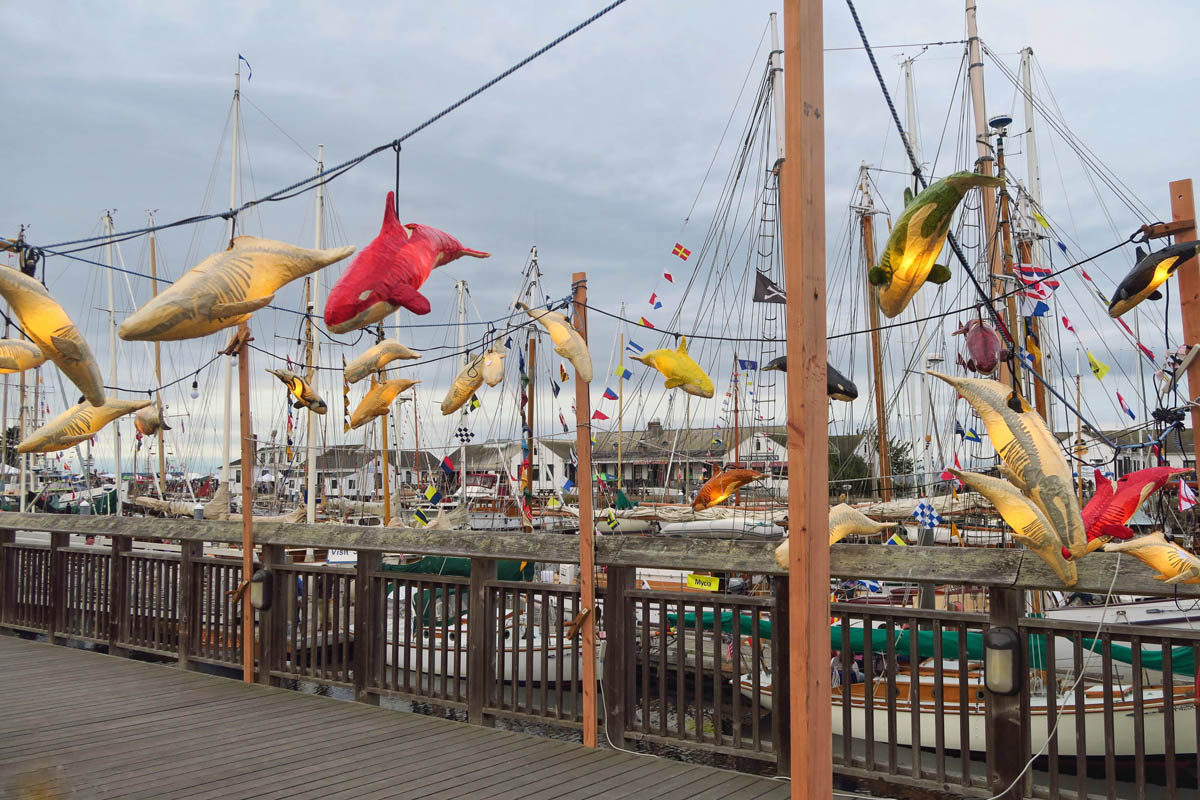 These paper mache dolphins were a festive addition this year. 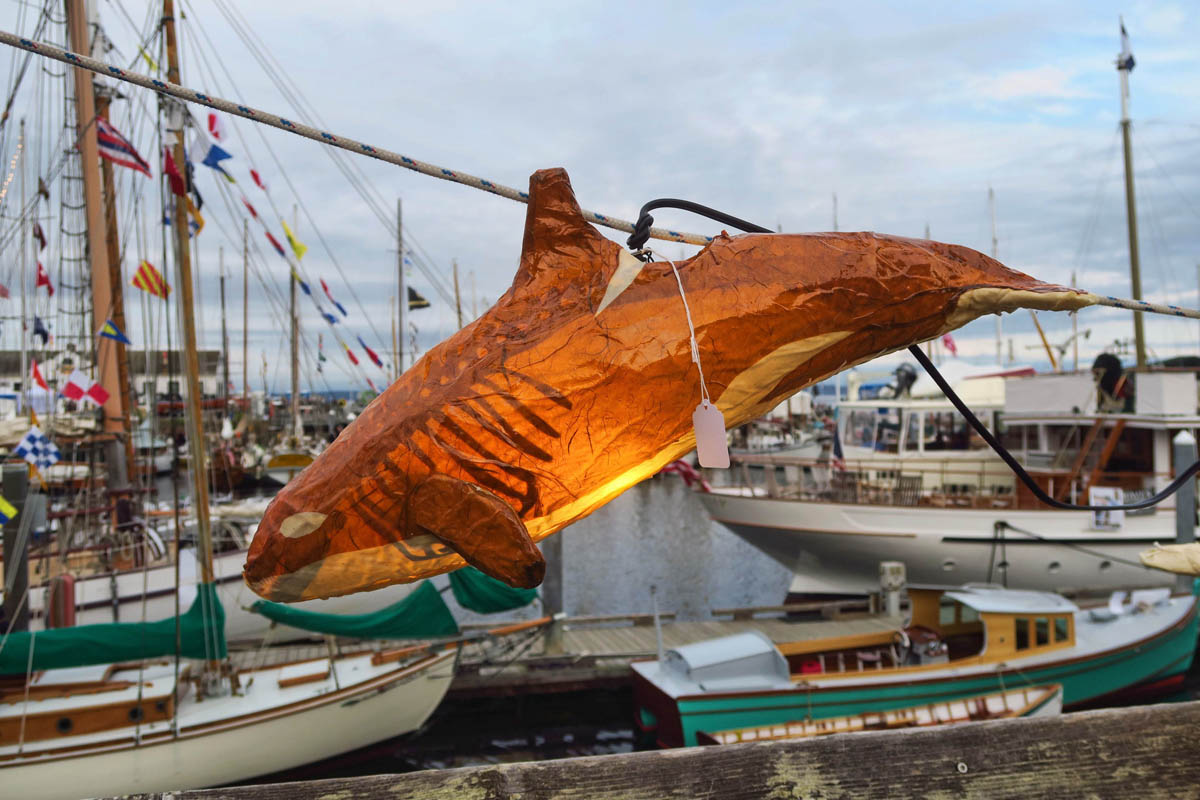 After the festival, they hung in the local art gallery. Not cheap!

While some of the presenters were the same as 2016, there was enough variety that I didn’t feel like it was a rerun. The festival seemed to have three themes running this year. The theme featured most prominently in the marketing materials was Japanese Boatbuilding. Inside the Maritime Center, there were demonstrations taking place on this art form featuring traditional Japanese tools, techniques, and cultural customs.

In addition, what seemed like less prominently featured themes were woven throughout the festival. Presentations capitalized on the fact that Steinbeck’s “Western Flyer,” was being refurbished in the boatyard nearby. This vessel was used in John Steinbeck and Ed Ricketts’ 1940 expedition to the Gulf of California, from which the notes were published in their 1951 book The Log from the Sea of Cortez. The 77-foot Western Flyer, made from old growth fir, has been called the “most famous fishing vessel ever to have sailed.” Festival presentations covered the boat restoration, as well as the unsung role Steinbeck’s wife Carol played in the expedition. 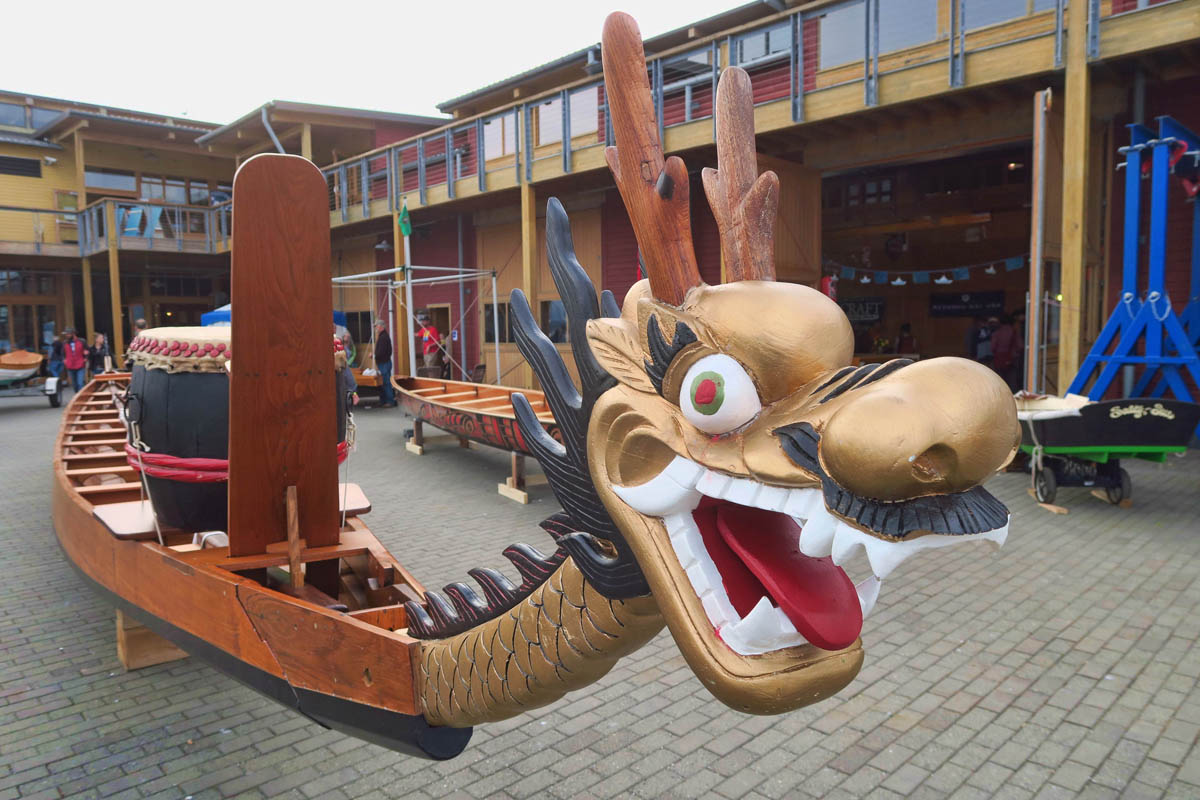 Asian arts featured heavily in the festival this year. 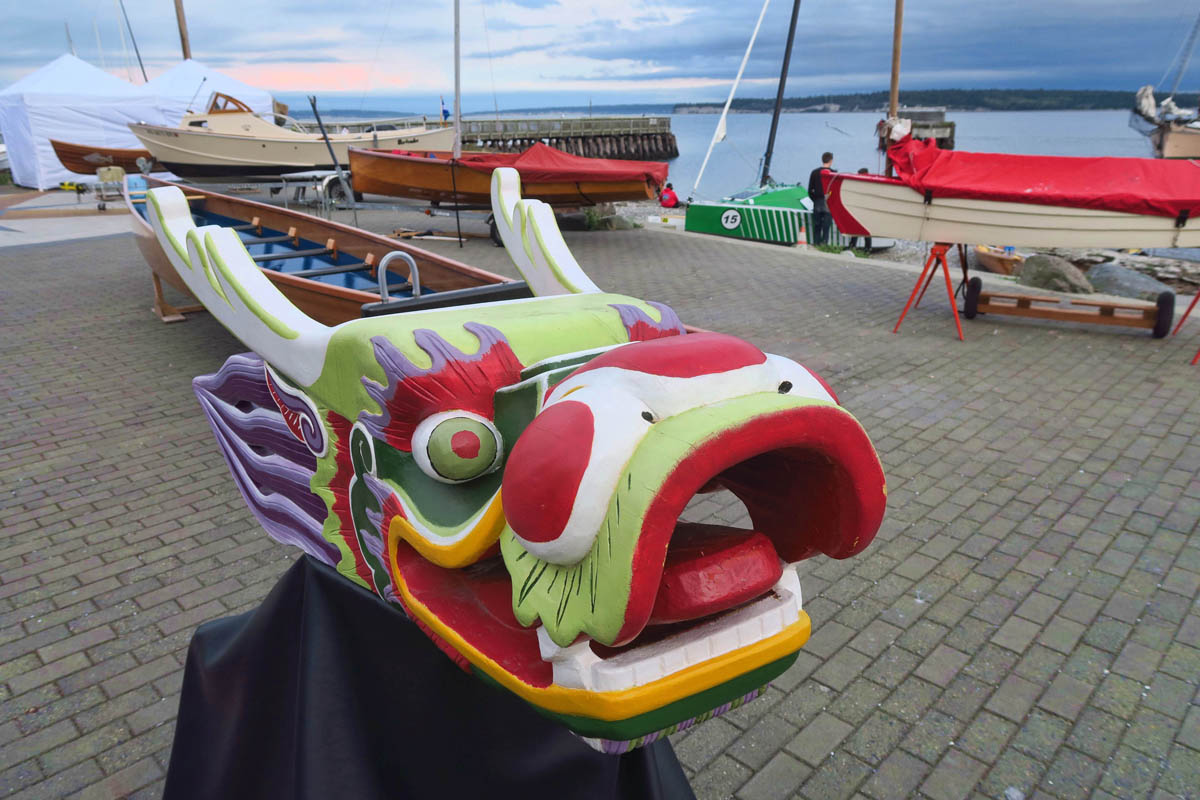 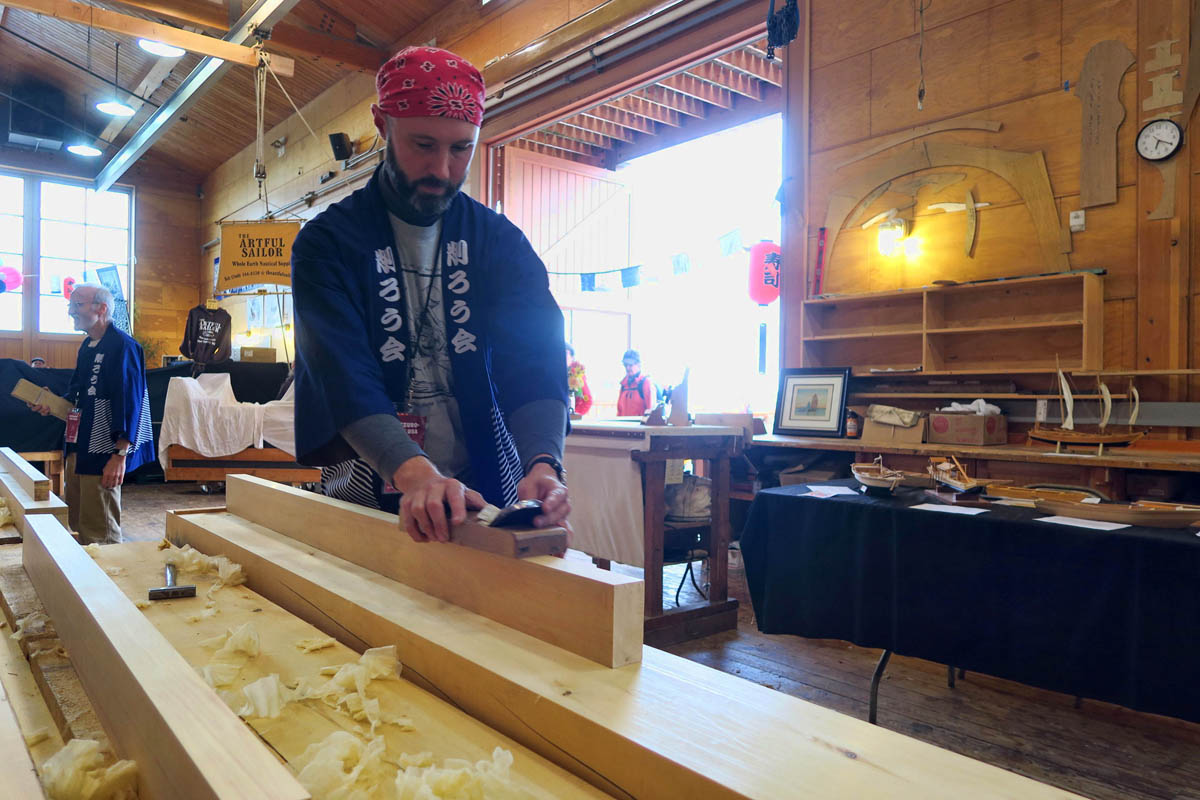 Inside the boatbuilding workshop, artisans were demonstrating the craft of planing this lovely yellow cedar. I collected some of the wood shavings because the cedar wood smelled fantastic! 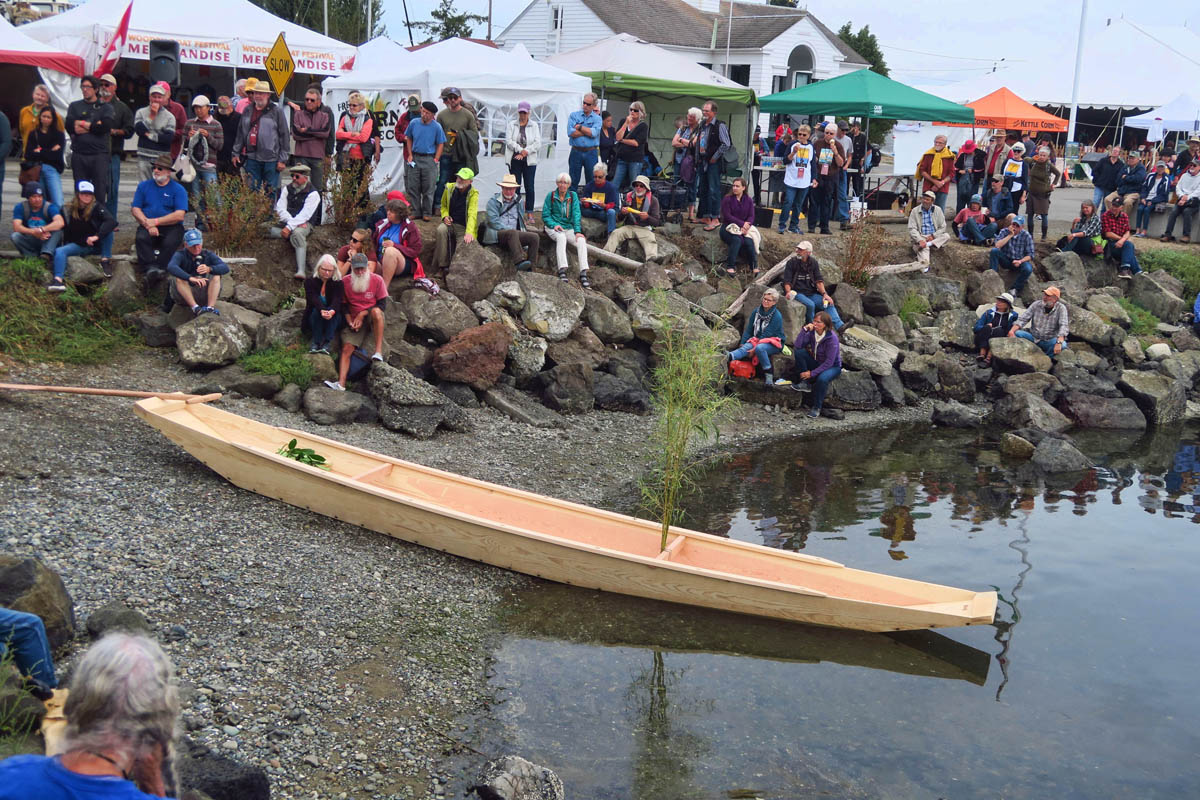 Prior to the festival, the NW Maritime Center offered a course in Japanese Boat Building. They completed this Japanese riverboat as a part of their class. 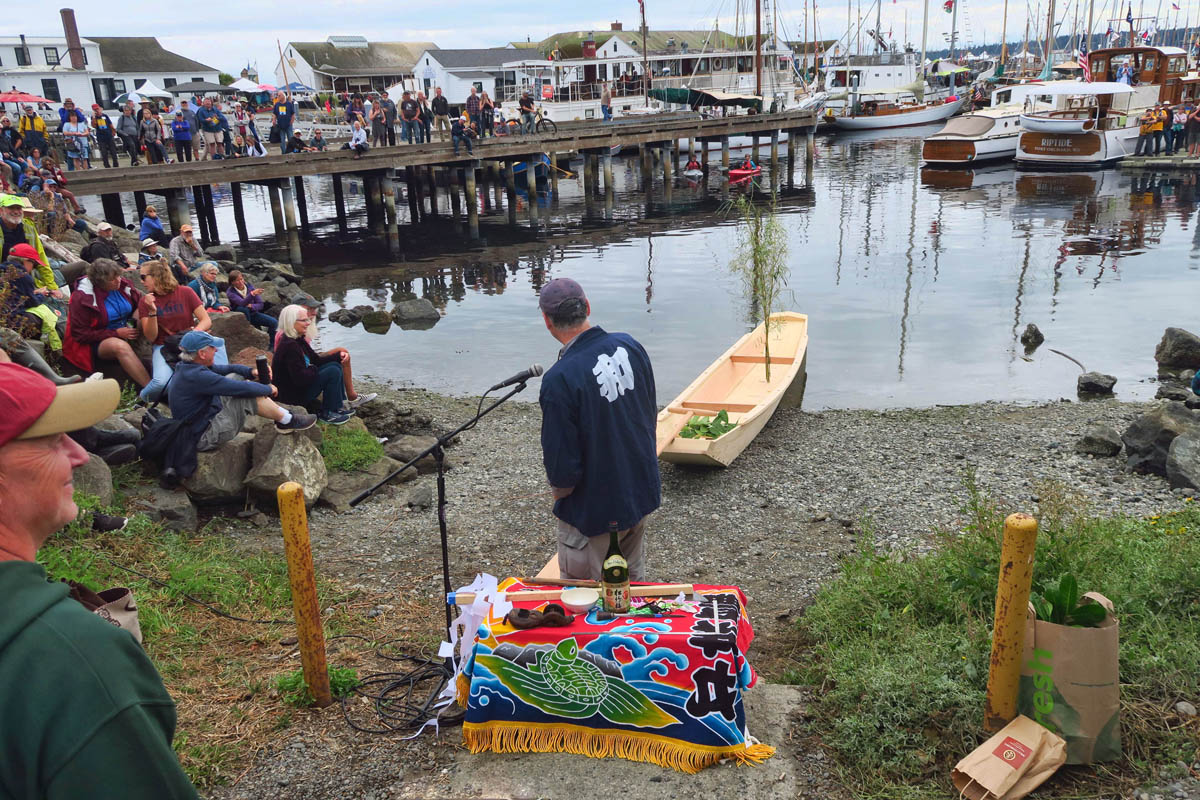 In keeping with the Japanese tradition, the boat undergoes a Shinto launching ceremony using various shrine objects, including mocha (rice cakes) and sake as an act of purification.

And finally, there was a strong theme featuring women sailors, riding high on the recent visit of the “Maiden,” the 58-foot yacht crewed by the first all-female crew to compete in the 33,000 mile Whitbread Round the World Race in 1989–90. During the festival, the documentary Maiden was featured at the local theater. If you haven’t yet seen the documentary I highly recommend it as awe-inspiring. While each of these themes were quite interesting and could have supported a festival theme in their own right, they almost diluted the overall Japanese boatbuilding festival theme in my opinion. Seems like a better marketing strategy might be to pick one, and really build on that theme. But then what do I know? I never cared for the Marketing Dept. during my career at American Express.

Another aspect that really changed the atmosphere this year…literally…was the weather. While Friday was a picture-perfect day, by Saturday morning the low-lying clouds were rolling in, and the drizzle began. By Sunday, it was more than a drizzle, which made the “Sail By” closing ceremonies fizzle! In 2016, every ship in the harbor headed out to join the parade, filling the Strait of Juan de Fuca with sails. This year, seems a lot of boats either left early, or opted not to participate in the Sail By event.

The unfortunate weather contributed to my final reason the festival was different this year. Last visit, I took over 500 photos. This year, I didn’t even reach 50. Therefore, the blog is a little short on scenes from the festival this time around. 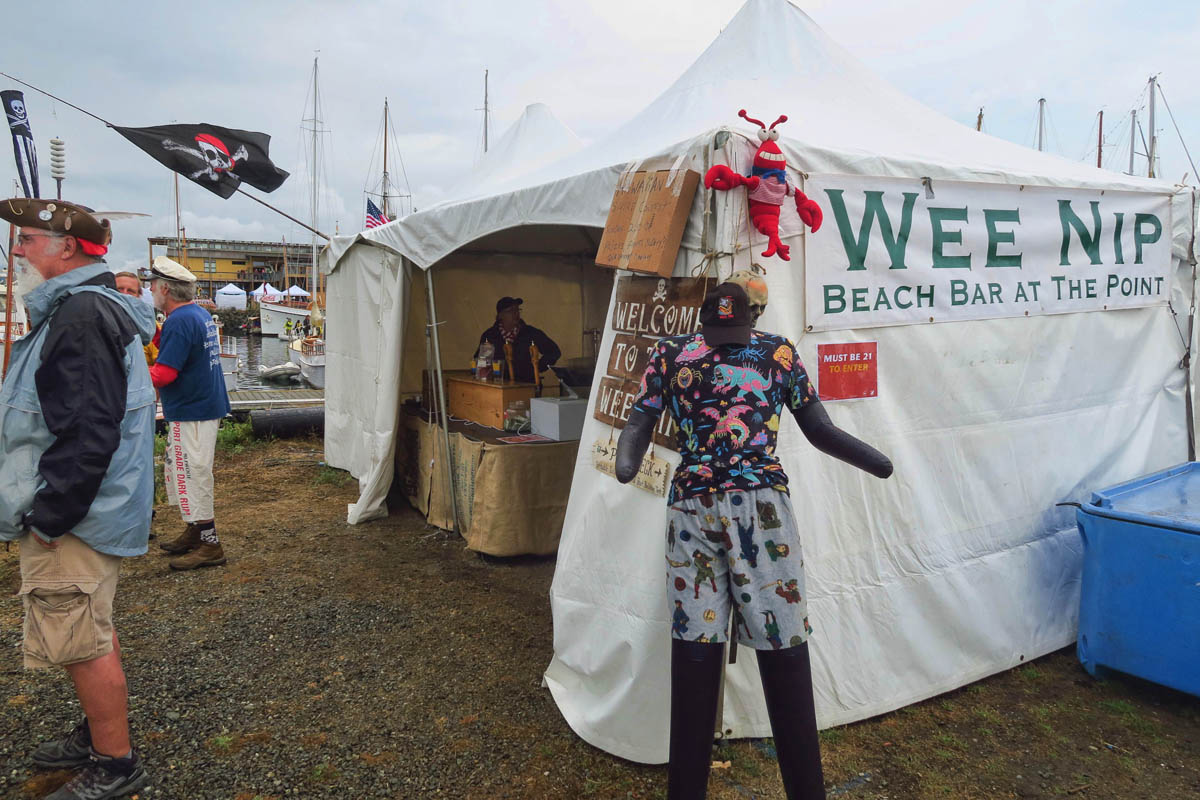 For me, the saddest change of all this year over my 2016 visit is the demise of the “Wee Nip Bar.” This is what it has come to….a white plastic tent with a blow-up doll. 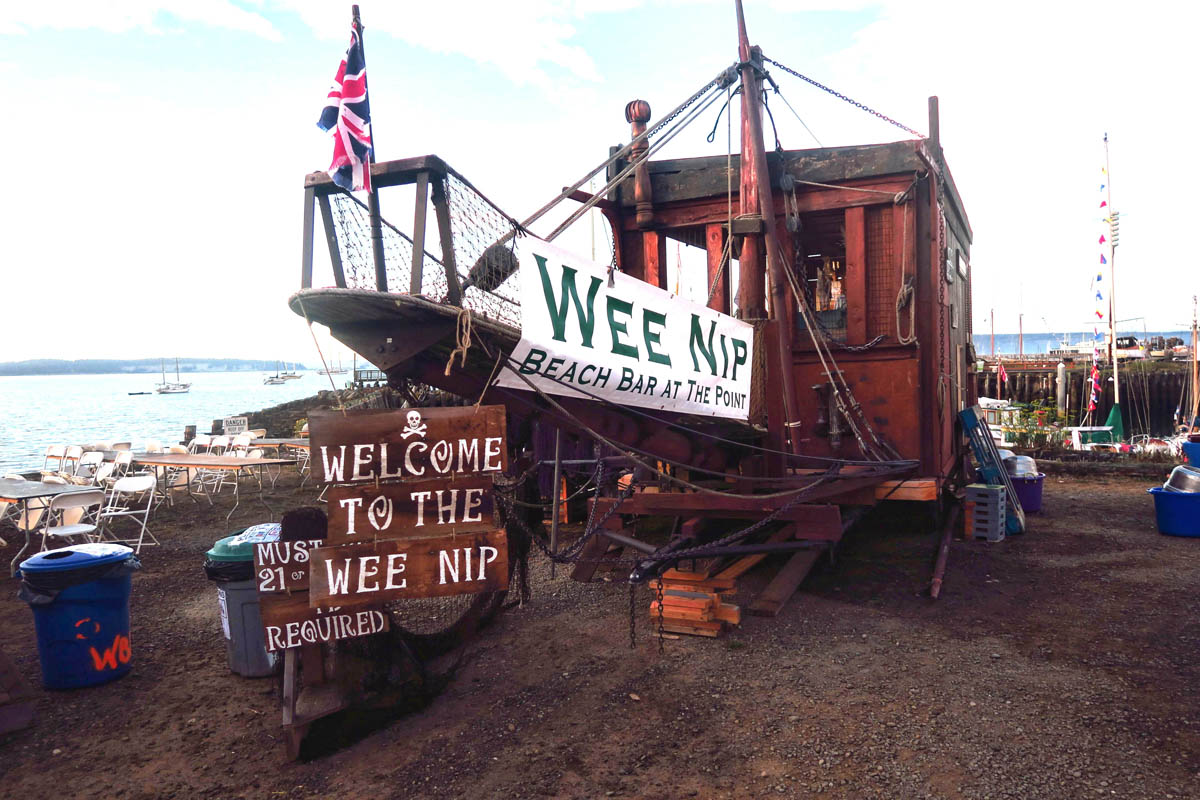 This was the Wee Nip Bar in 2016…a very cool pirate ship! But sadly, it succumbed to old age, and couldn’t withstand the transport to and from the festival. 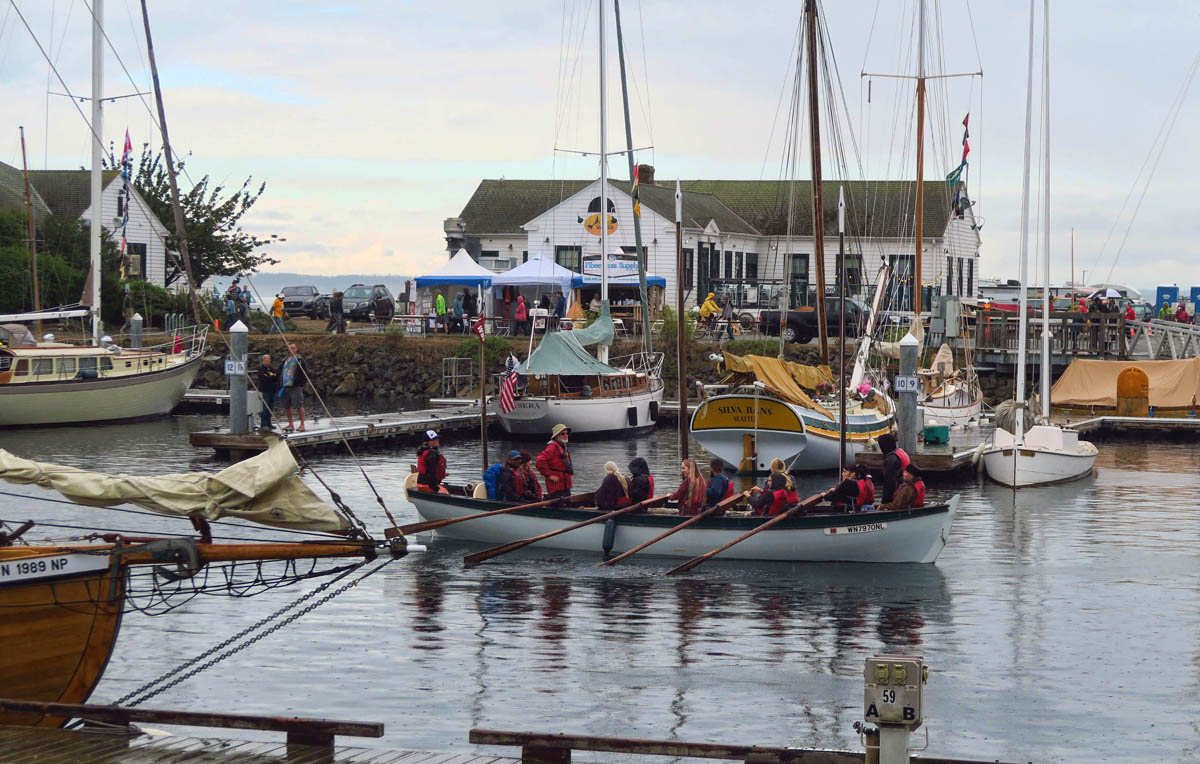 The Long Boats offer free rides to those who want to row in the rain. 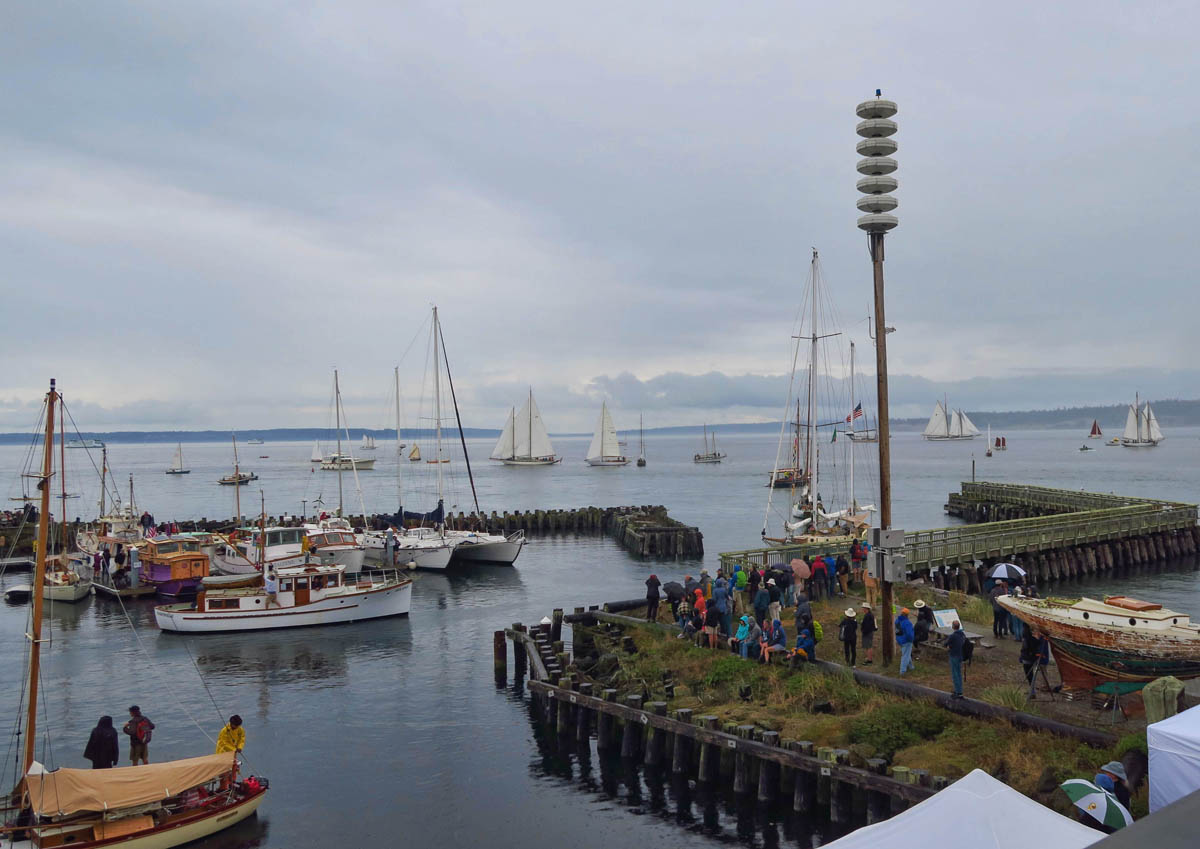 It’s a wet and soggy “Sail By” this year. Not as many boats parading in the harbor to celebrate festival end.

So did I not have as much fun this festival? Quite the contrary! I really enjoyed being a part of the volunteer team. I met some really nice people, which led to a weekly volunteer gig whereby I helped out at the Northwest Maritime Center each Wednesday for the remainder of my stay. The passion for the craftsmanship and art of wooden boatbuilding was as inspiring as ever. And I achieved my intention set at the beginning of the year to “incorporate more boats in my life!” 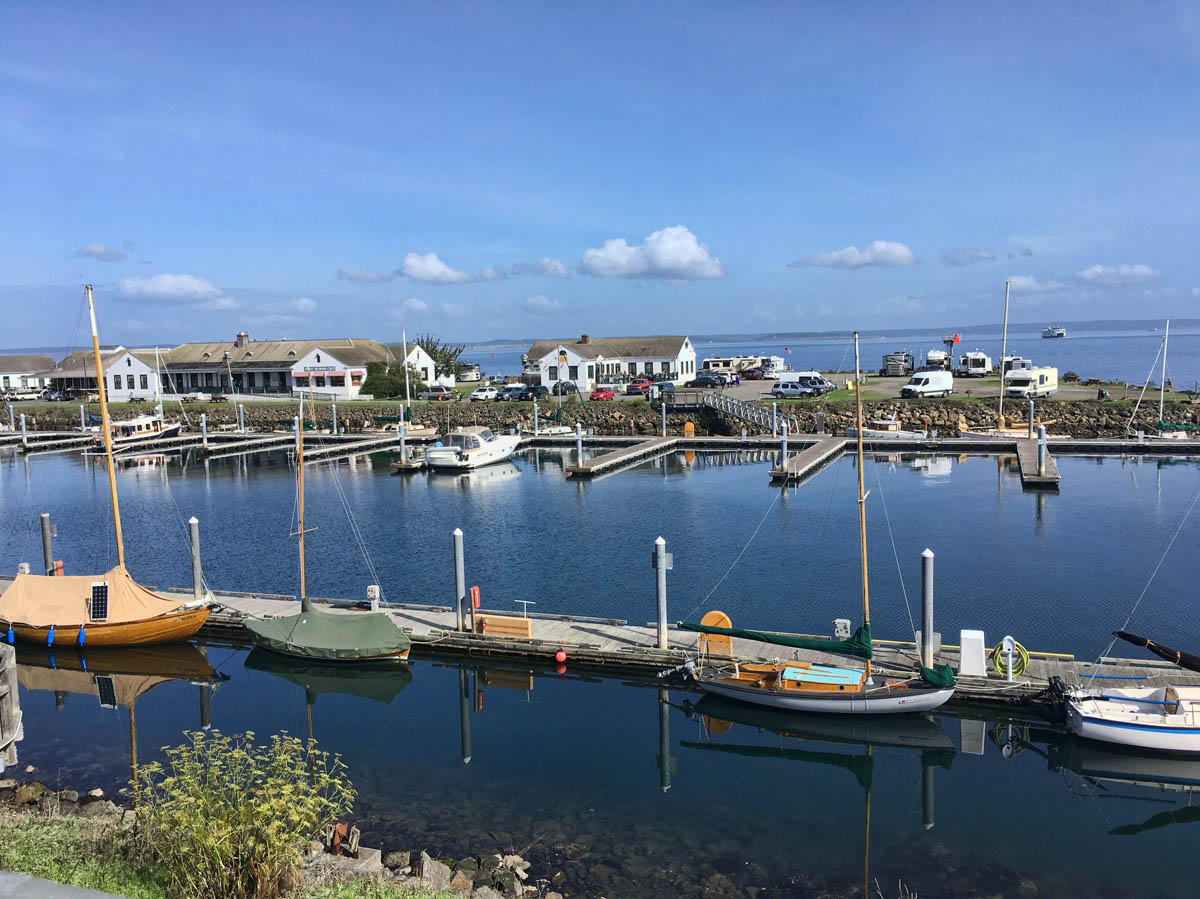 Things get quiet in a hurry after the festival ends. I don’t remember ever seeing this few boats in the harbor before. 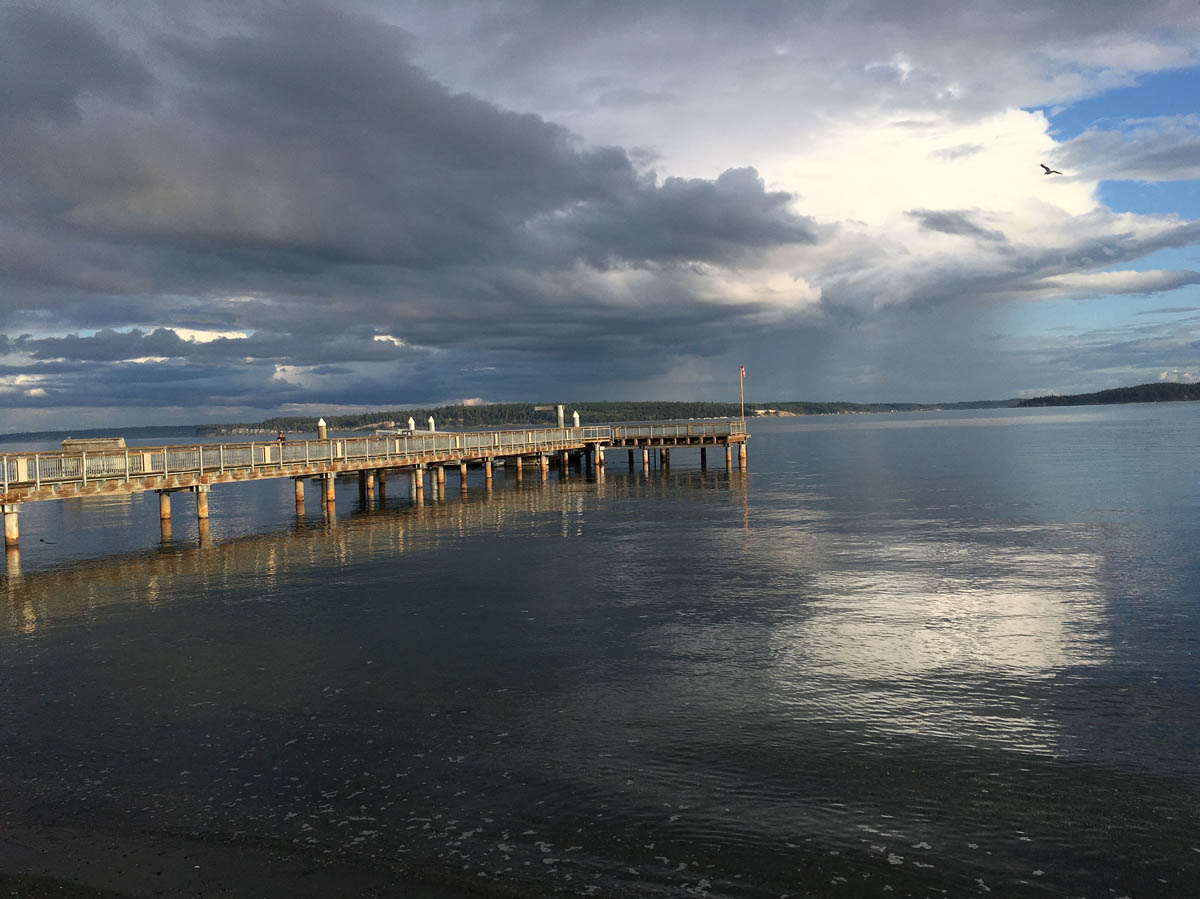 Fall weather starts to change pretty quickly in the PNW. I am in fleece and running the heater at night by Oct 1st. 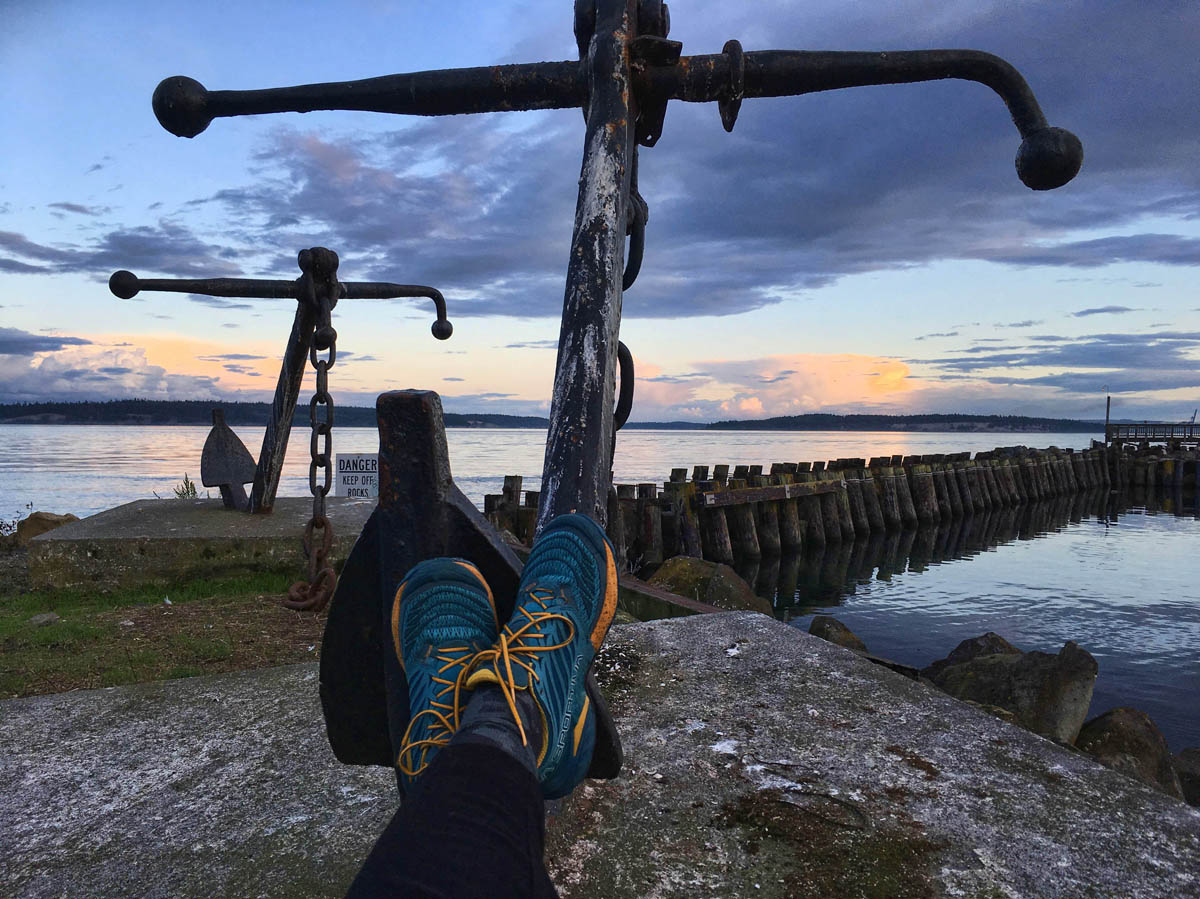 Nights where it is warm enough to sit outside and watch the sunset are few and far between by October. 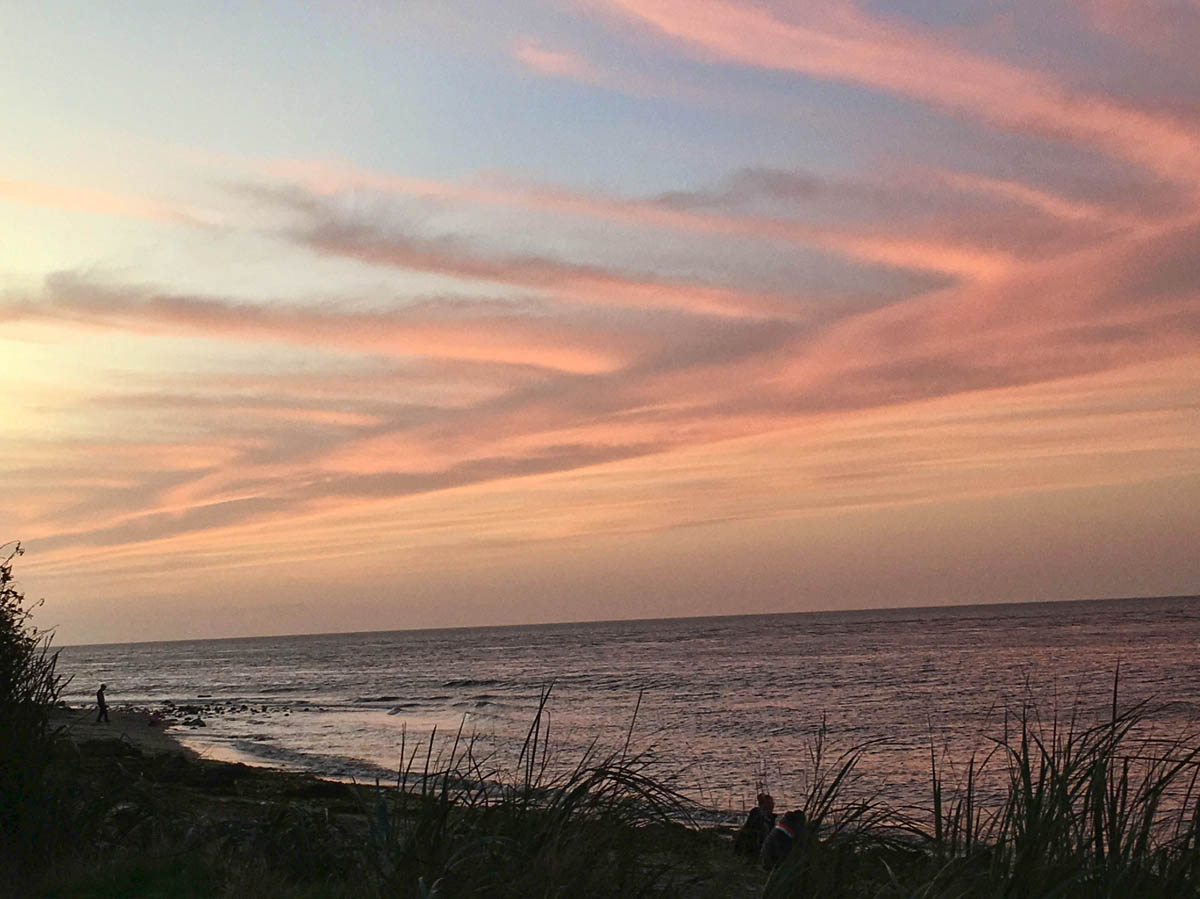 Summer and early fall in the PNW are short seasons…