Before I delve in to the New Mexico recap, I just wanted to thank those who commented on my “This Old House” post. I loved reading about your respective memories of that first place we each called “home.” I found the comments not only moving, but also rewarding that writing a post on a personal blog could net me so many wonderful “mini vignettes” in return. Thank you all for the gifts.

Last year when I attended the Santa Fe Opera, the program distributed at the beginning of the performance contained a preview of the upcoming 2019 season. One performance particularly piqued my interest enough to make me want to return for the second year in a row. Renée Fleming, in her Santa Fe Opera debut, would be performing a one-night only performance, “Letters from Georgia” whereby composer Kevin Puts selected five of over 5,000 of Georgia O’Keeffe’s letters, setting them to musical score. For me, that was like a double-header!

For those who may not be familiar with opera’s version of superstars, Renée Fleming is an operatic superstar. While she has performed in venues from the most famous opera houses in the world, to the Obama inauguration at the Lincoln Memorial, and as the first opera singer to sing the Star Spangled Banner at the Superbowl, she has also won four Grammy awards. And though she has all but retired from full operatic productions, now doing mostly concert performances, she had never starred at the Santa Fe Opera until this event.

As if that wasn’t enough of a draw, Ms. Fleming would also be singing passages from letters that Georgia O’Keeffe had written to both her lover turned husband, photographer, art curator and promoter of O’Keeffe’s work, Alfred Stieglitz, and also to her best friend Anita Pollitzer. As a huge admirer of O’Keeffe, how could I miss this? But as a one night only performance expected to sell out, tickets would only be made available to us non-subscribers of the opera through a lottery system. So in August of 2018, I submitted my request online, and several months later I received notice that I had been lucky enough to score a ticket to the August performance! 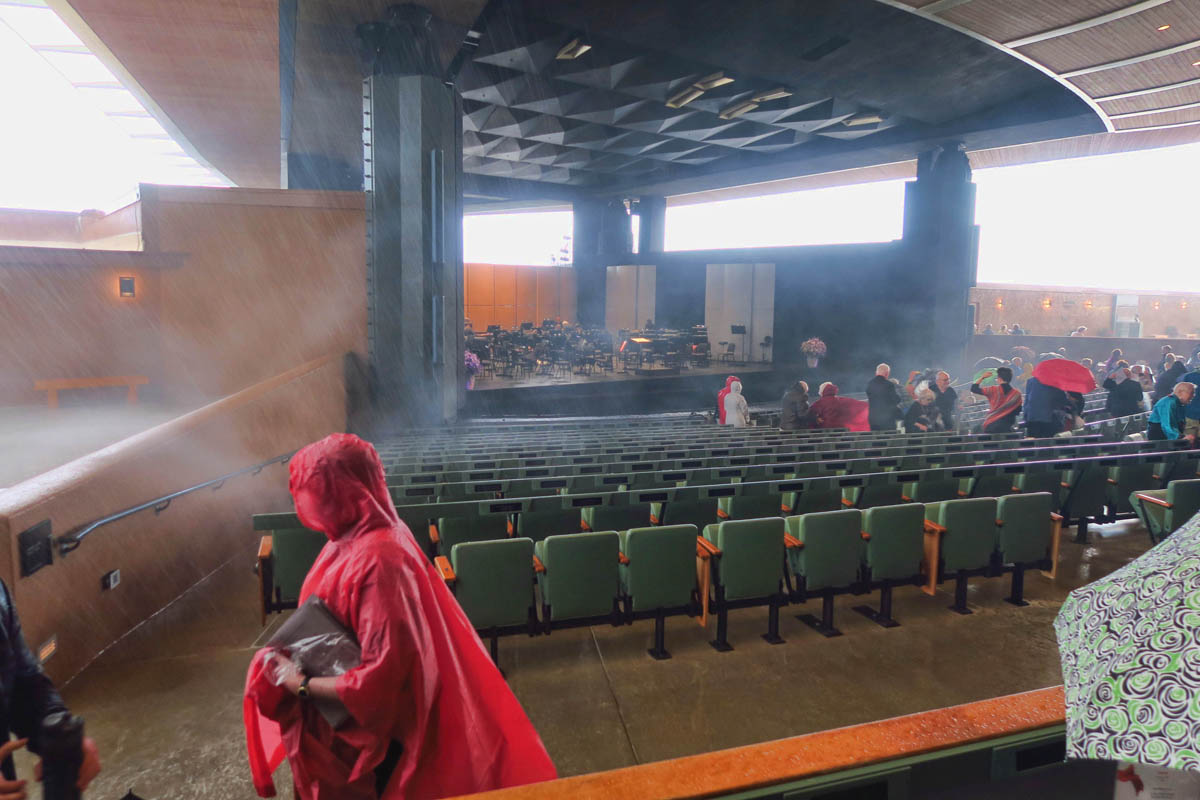 The Santa Fe Opera venue is such a blessing and a curse. The open walls are magnificent on a clear night, but not so much on a stormy night. The performance took a rain delay, as sheets of rain blew in right over my seat! The staff came out with towels to dry off the seats once the rain stopped. 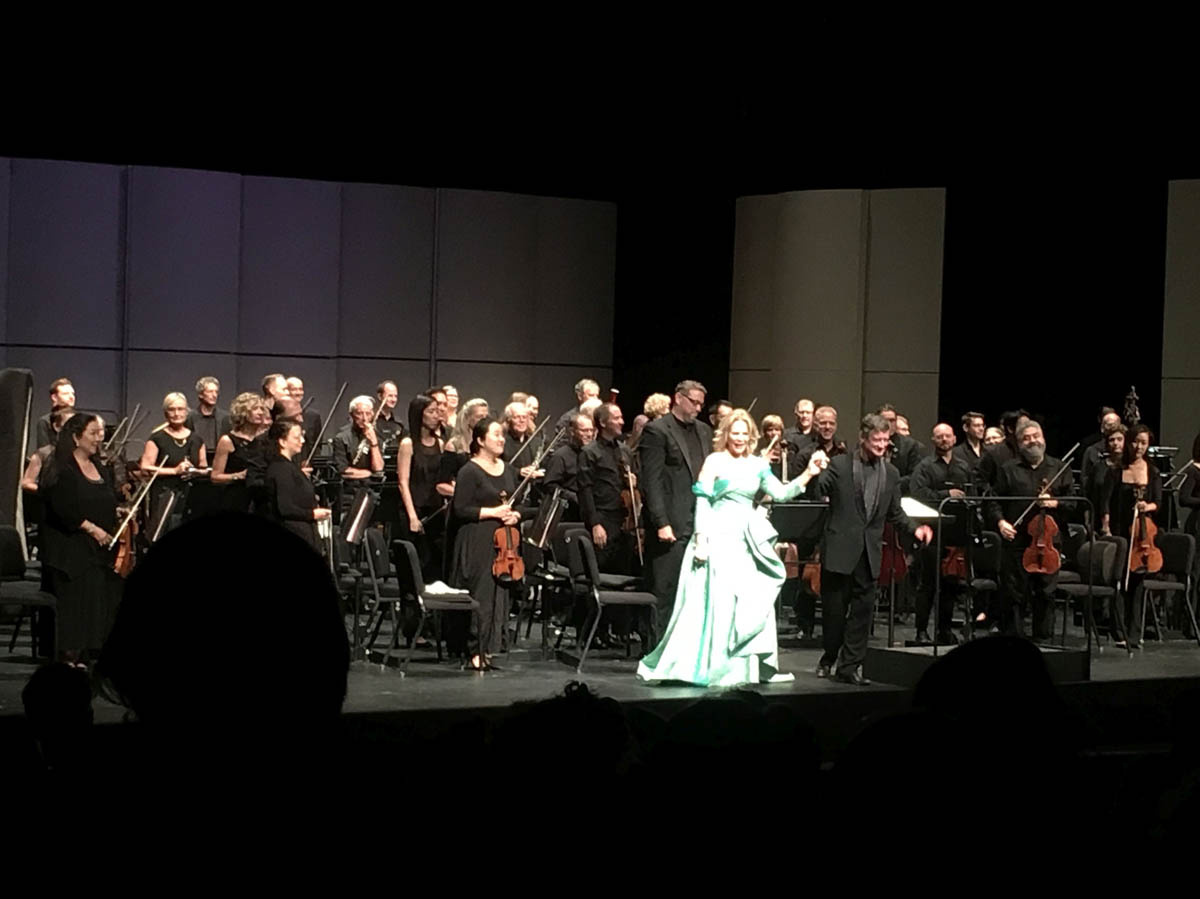 Another stolen photo during the encore. (Poor quality due to iphone.)

I ended up going to the opera all three nights during my stay in Santa Fe. It’s such a wonderful venue with open “walls” that look out over the Santa Fe Mountains as the setting sun paints the horizon, and the mountains rise up to meet the brilliant night sky. In addition to “Letters from Georgia,” I also saw an apprentice performance given by the students of the Santa Fe Opera apprentice program, and I also saw “La Boheme,” my favorite opera. As with last year, I justified my opera binge by buying “standing” tickets on the third night for only $15, accessing an empty seat following the first act.

But what I want to remember from my visit to the Santa Fe Opera this season is Renée Fleming standing on stage that stormy night in her mint-green satin gown, facing down the inclement weather like a masthead on a ship heading to wind. She boldly stood there, unflappable, singing the lyrics from Georgia O’Keeffe about the magnificent New Mexico night sky, “and grey blue clouds were riding all through the holiness of it” never flinching as the lightning flashed on all sides of the stage, and thunder rolled across the high desert.

The more I learn about O’Keeffe, the more I want to know. I’ve long been a fan of her work since her artwork “White Shell with Red” featured on the 1976 Santa Fe Music Festival poster graced my apartment wall. Her three most famous subjects, Manhattan cityscapes, stylistic flowers, and those sweeping sandstone colors, all fall under the category of my favorite things. Her “fly in the face” rejection of societal norms and her prickly personality intrigue me, as does how she remained true to herself, moving about the country painting what inspired her, regardless of critics. While known as the highest paid “woman artist,” she didn’t like the modifier, preferring instead to just be known as an “artist.”

Moving on further north through New Mexico, I had an opportunity to delve a little deeper into the life of Georgia O’Keeffe, as her former homes, both on Ghost Ranch and her home and studio in the tiny town of Abiquiu were in my direct path heading north. The lovely Riana Campground on the Abiquiu Reservoir made for the perfect place to explore both areas, as it was located equidistant between the two. 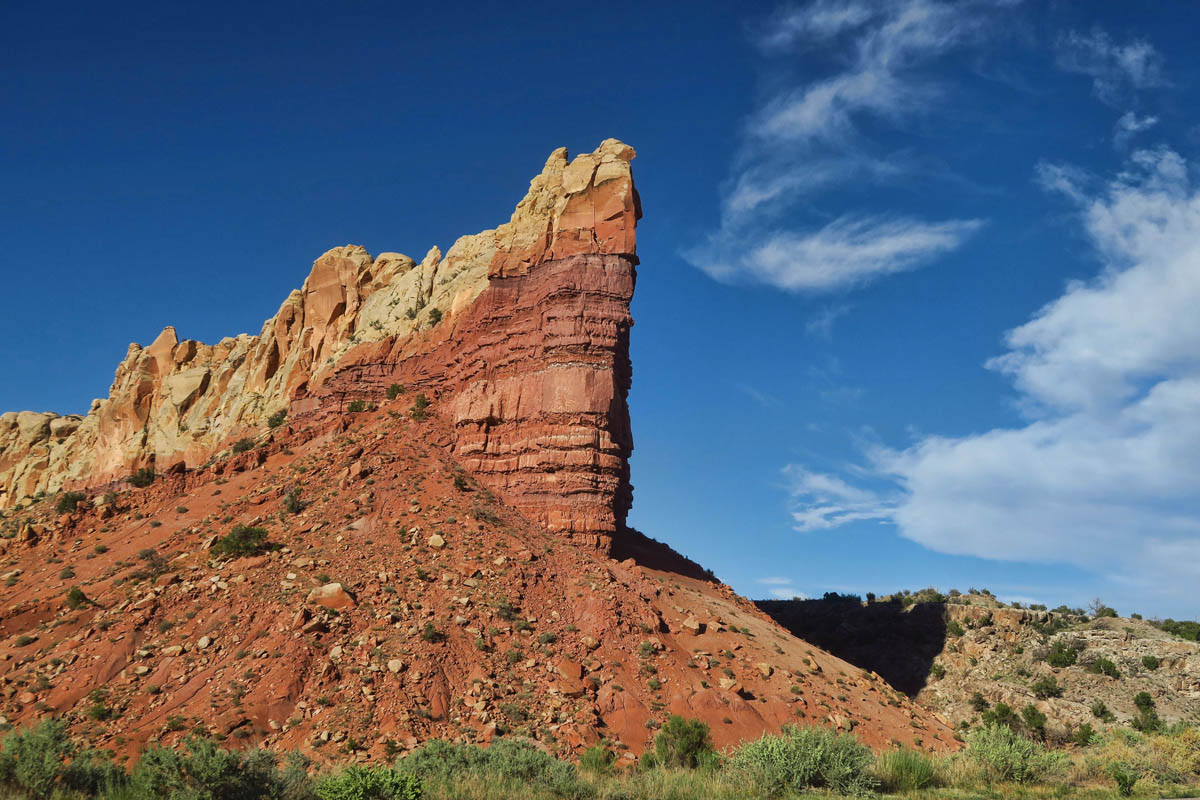 I realize I have broken the “Rule of Thirds” here, but I was as intrigued by the clouds as I was the rock formation. 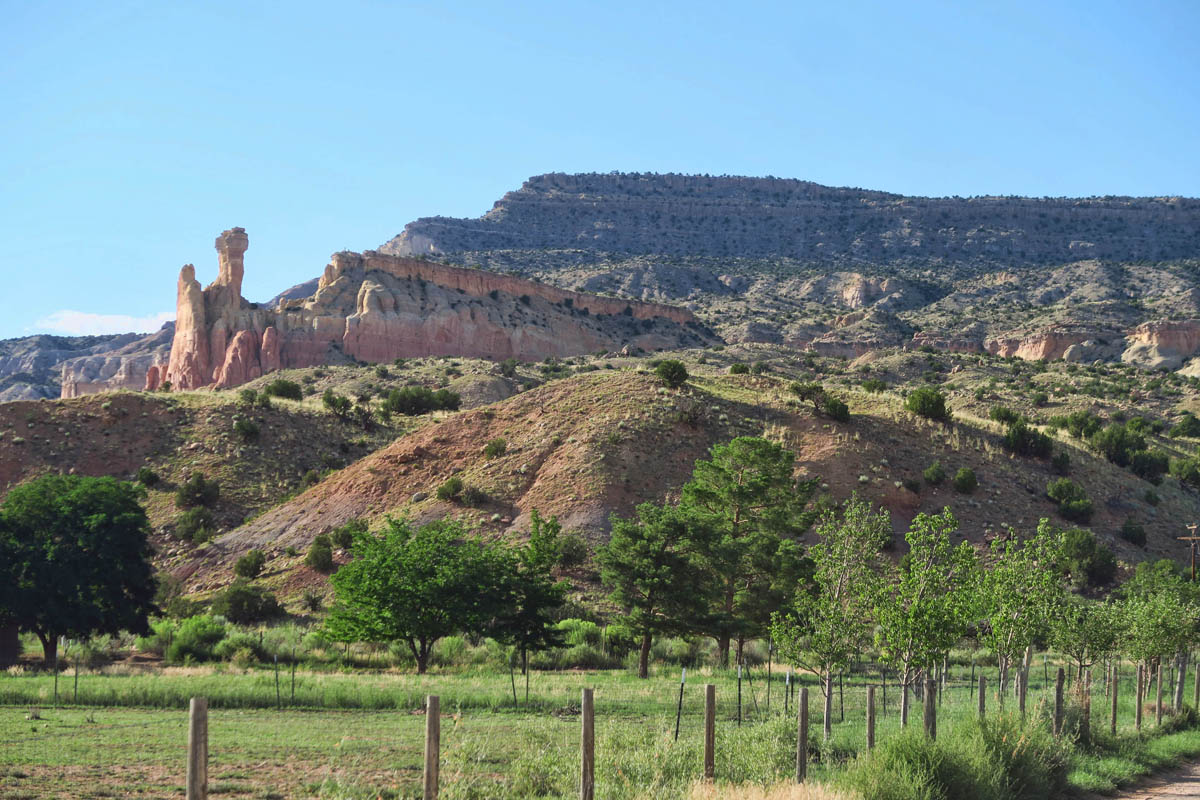 Chimney Rock on the left 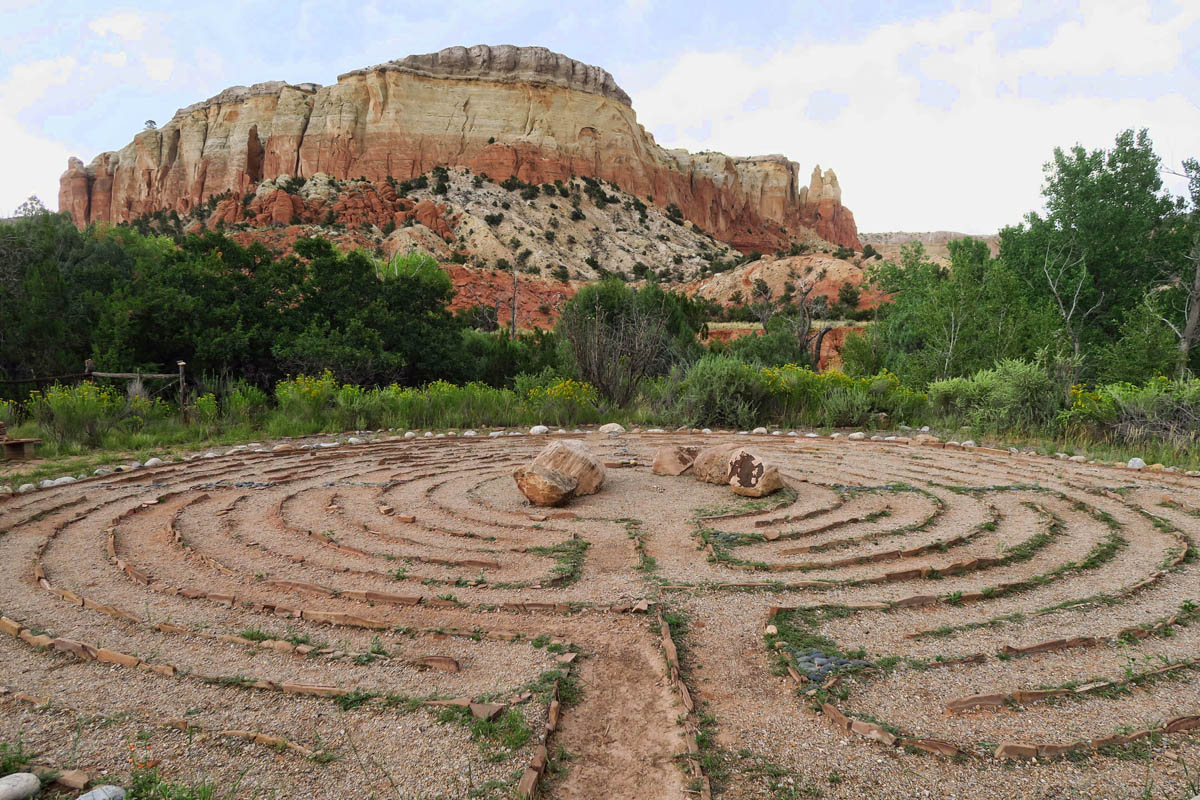 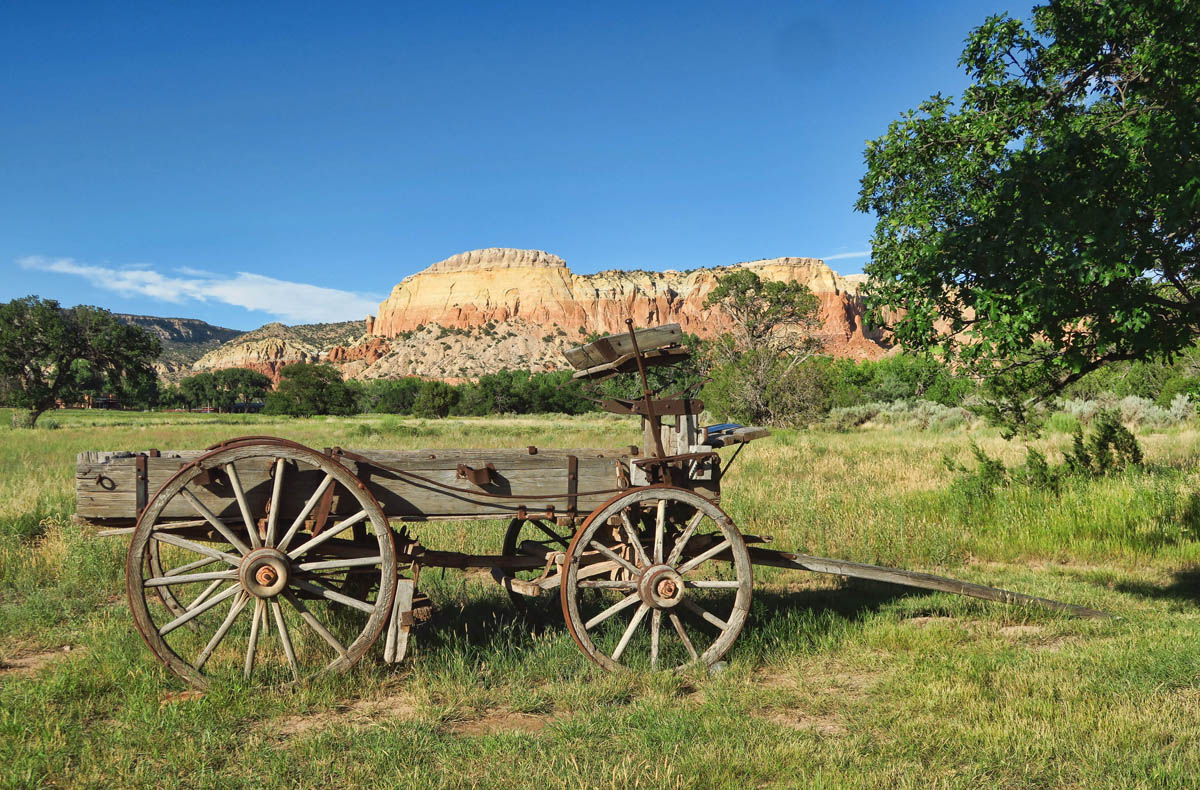 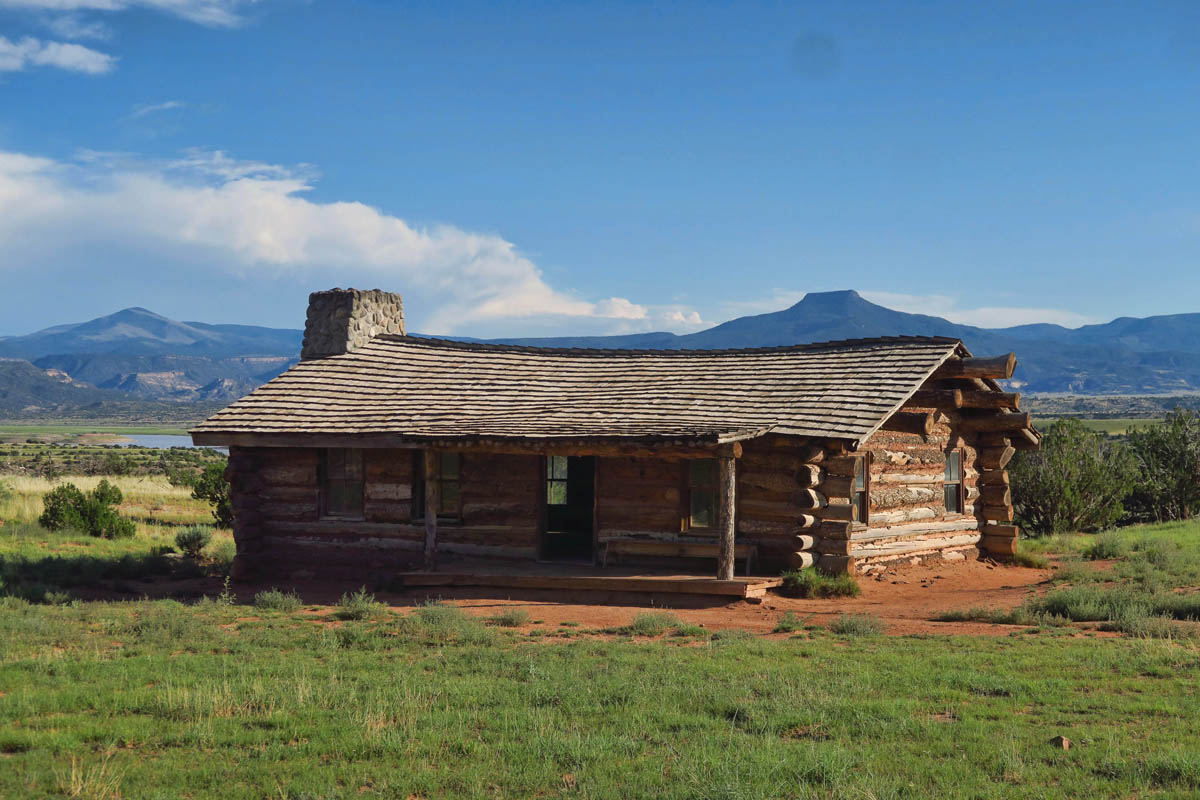 Cabin built for the 1991 film “City Slickers” starring Billy Crystal, was left on property after the film’s completion, due to its authentic look. 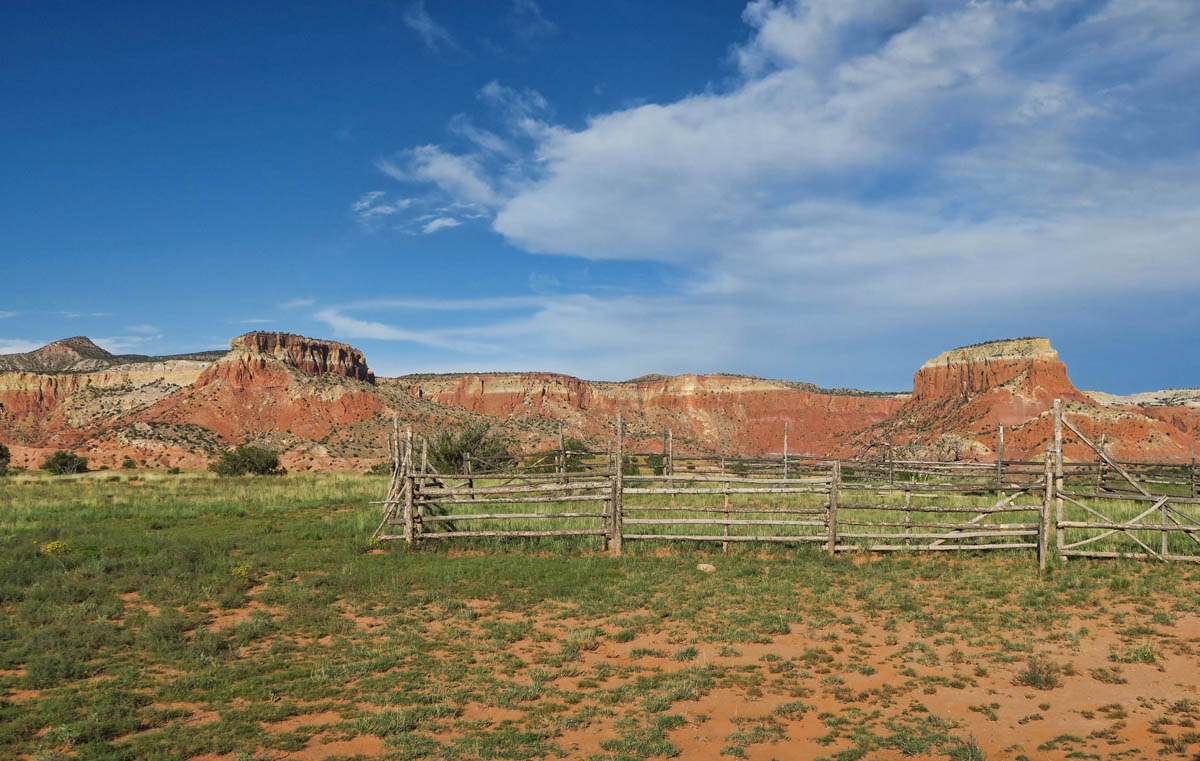 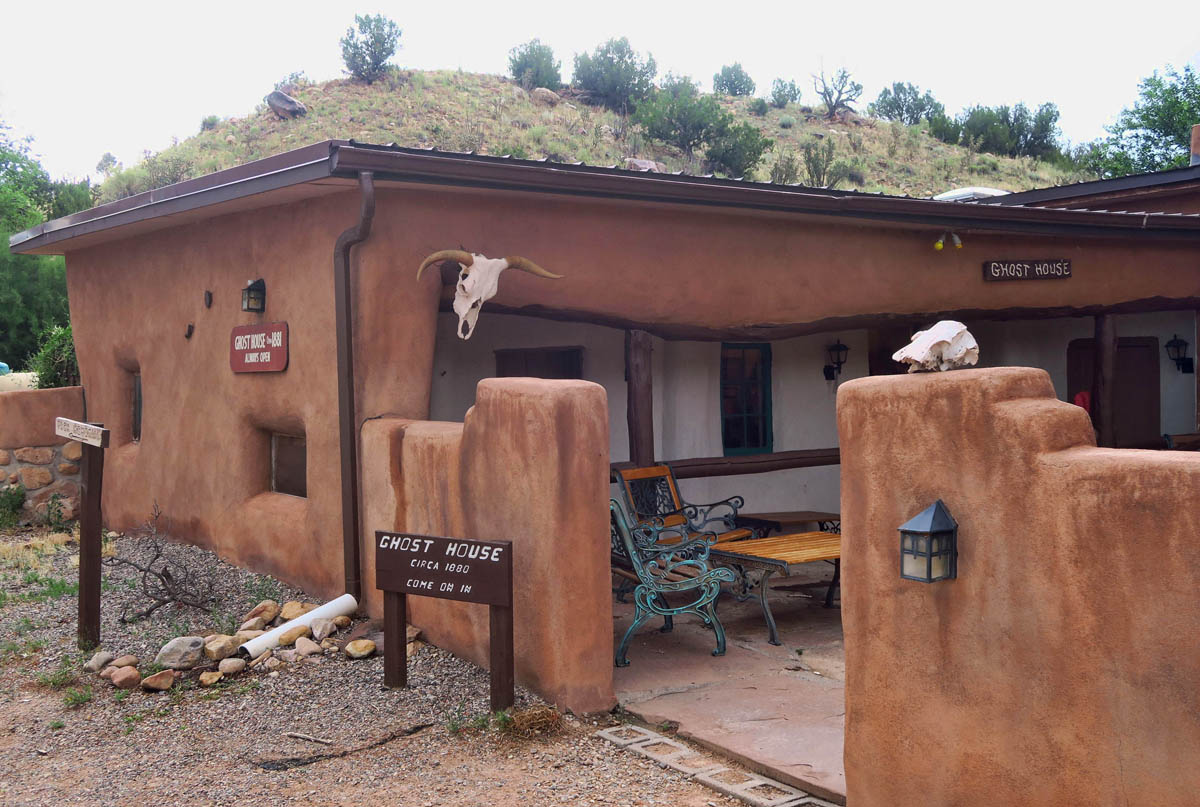 O’Keeffe first came to Ghost Ranch in 1934, and would return each summer to explore the ranch on foot and on canvas until she eventually purchased a home from the ranch owner. She spent summers there until she decided she wanted both a winter home and garden, so in 1949 she moved into her permanent home in Abiquiu. She remained in this home until 1984, when she moved into Santa Fe, two years prior to her death at the age of 98.

I participated in the landscape tour at Ghost Ranch (her former Ghost Ranch home is not open to the public,) whereby we were driven by minibus around the ranch with stops to view the scenes captured in O’Keeffe’s artwork. Whether it be the red and yellow cliffs, the gray hills, or the twisted trees along the roadside, what struck me the most is that the scenes when pointed out as the subject of her paintings, seemed smaller in real life than in her artwork. 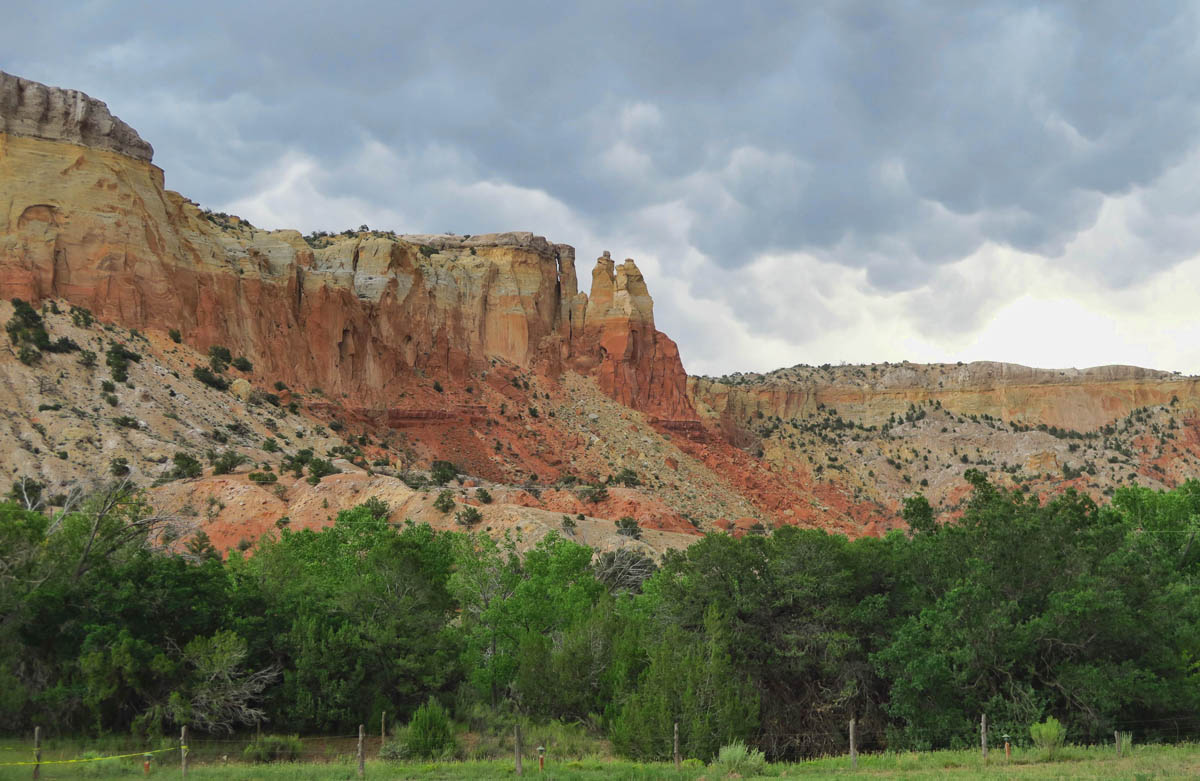 Minibus tour visited some of the sites that were featured in O’Keeffe’s paintings. 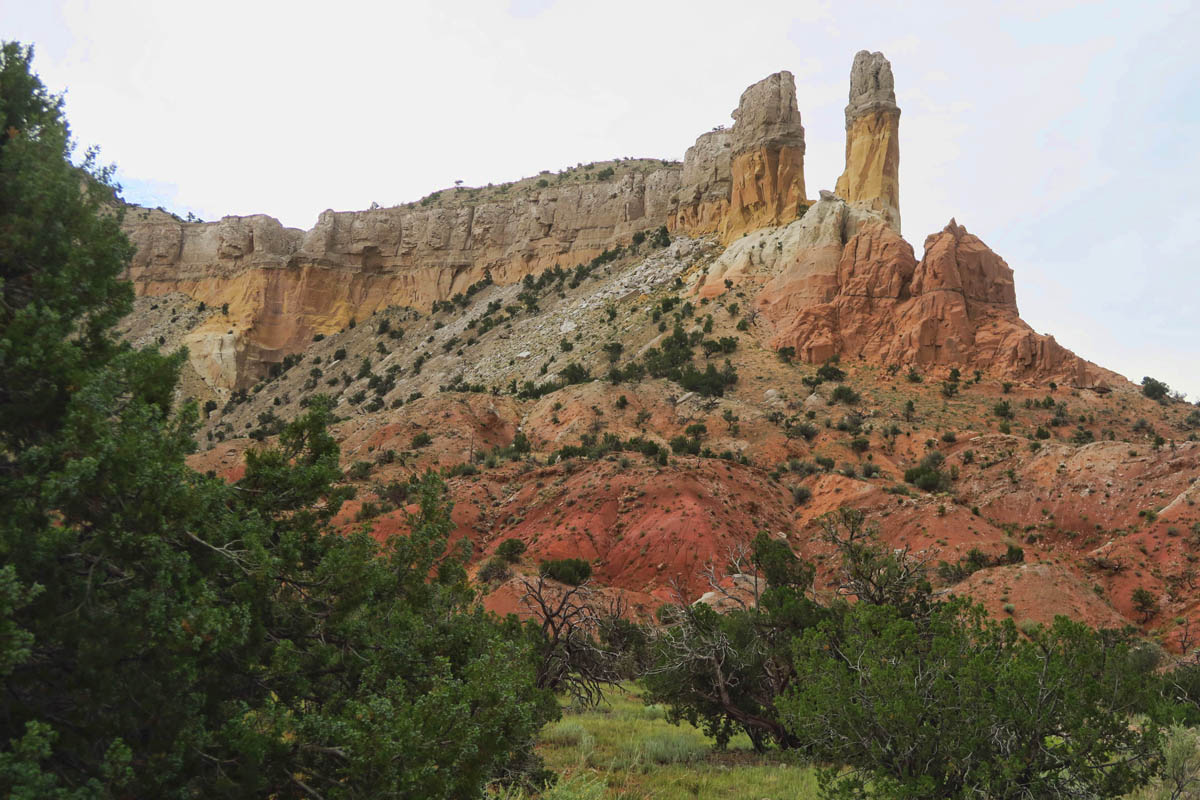 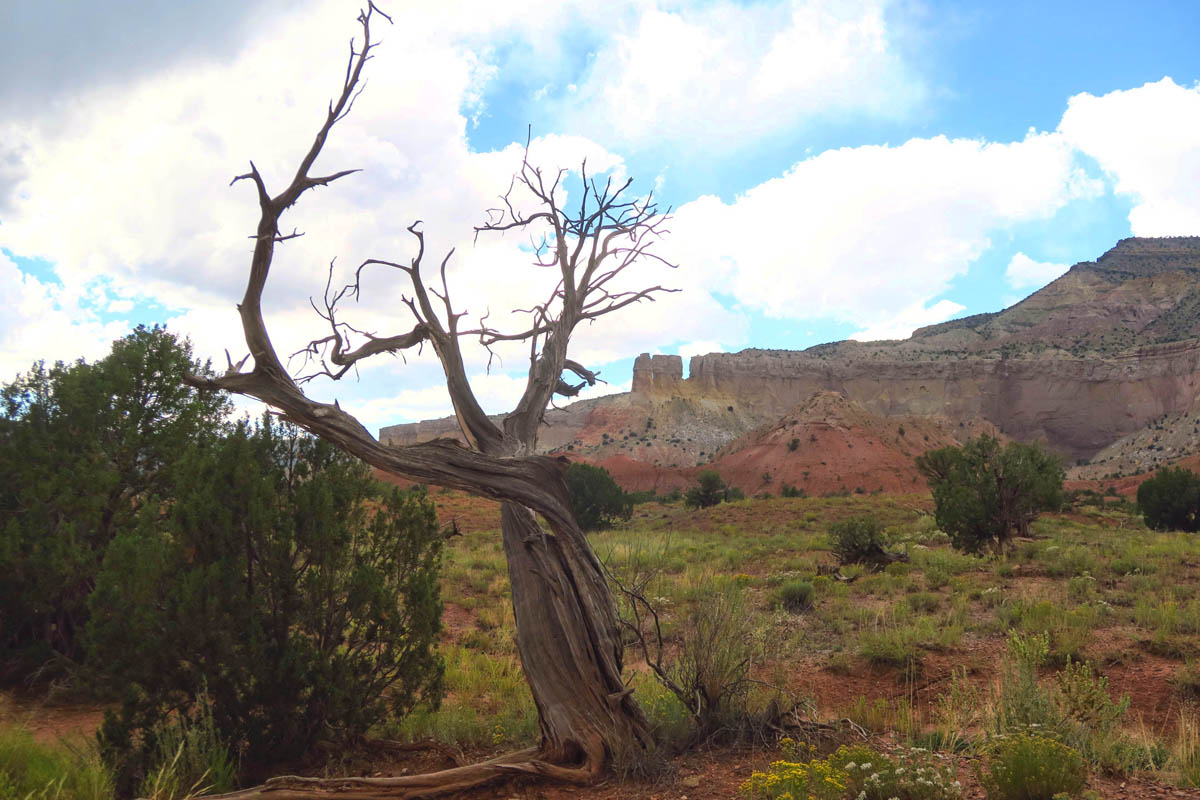 Featured in “Gerald’s Tree,” artwork O’Keeffe painted alongside the ranch road from the backseat of her car which Ansel Adams famously photographed while visiting in 1937. 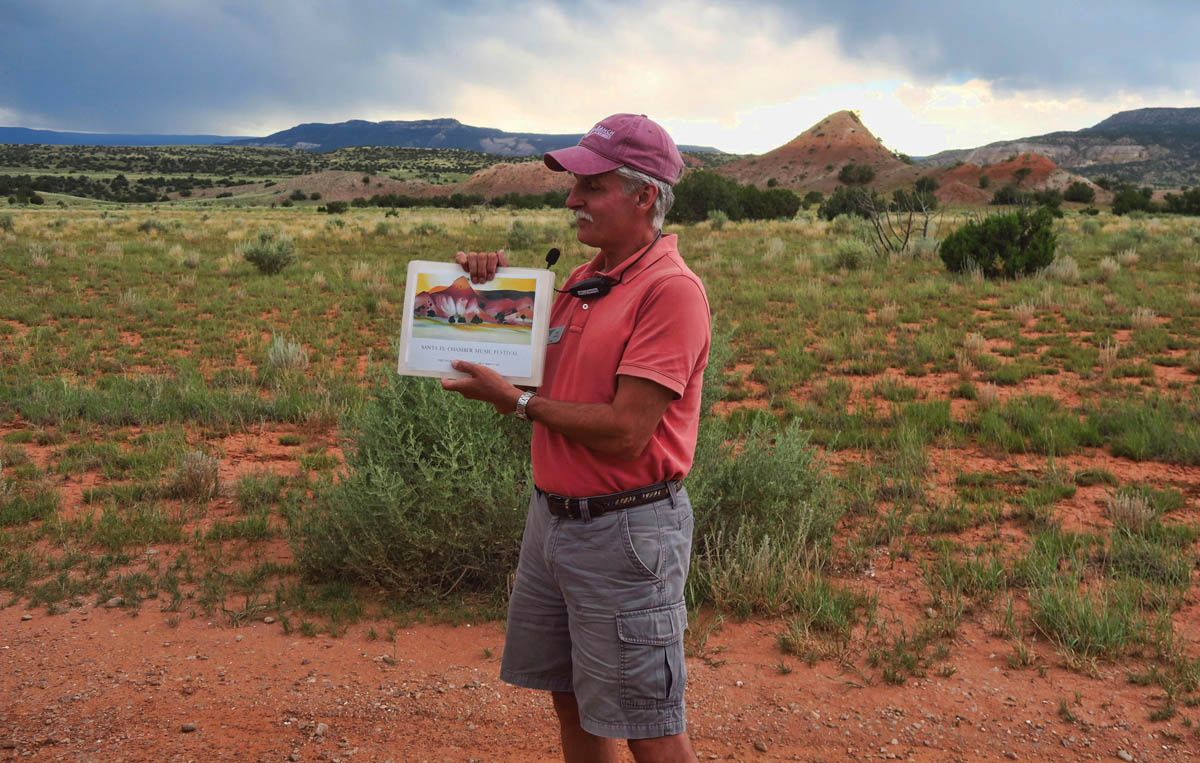 Our guide has a notebook filled with artwork O’Keeffe painted while at Ghost Ranch, and would show the comparisons at each stop along the tour. Note the lone peak in the background appears to the left of his fingertips in the painting he is holding.

As much as I enjoyed touring the ranch, I think I enjoyed her Abiquiu home and studio tour even more. Whether real or perceived, stepping into her studio felt electric. I loved the minimalist style of her home, which felt cozy rather than stark. I didn’t want to leave. (Unfortunately, another place with a “No Photos” policy inside the house.) 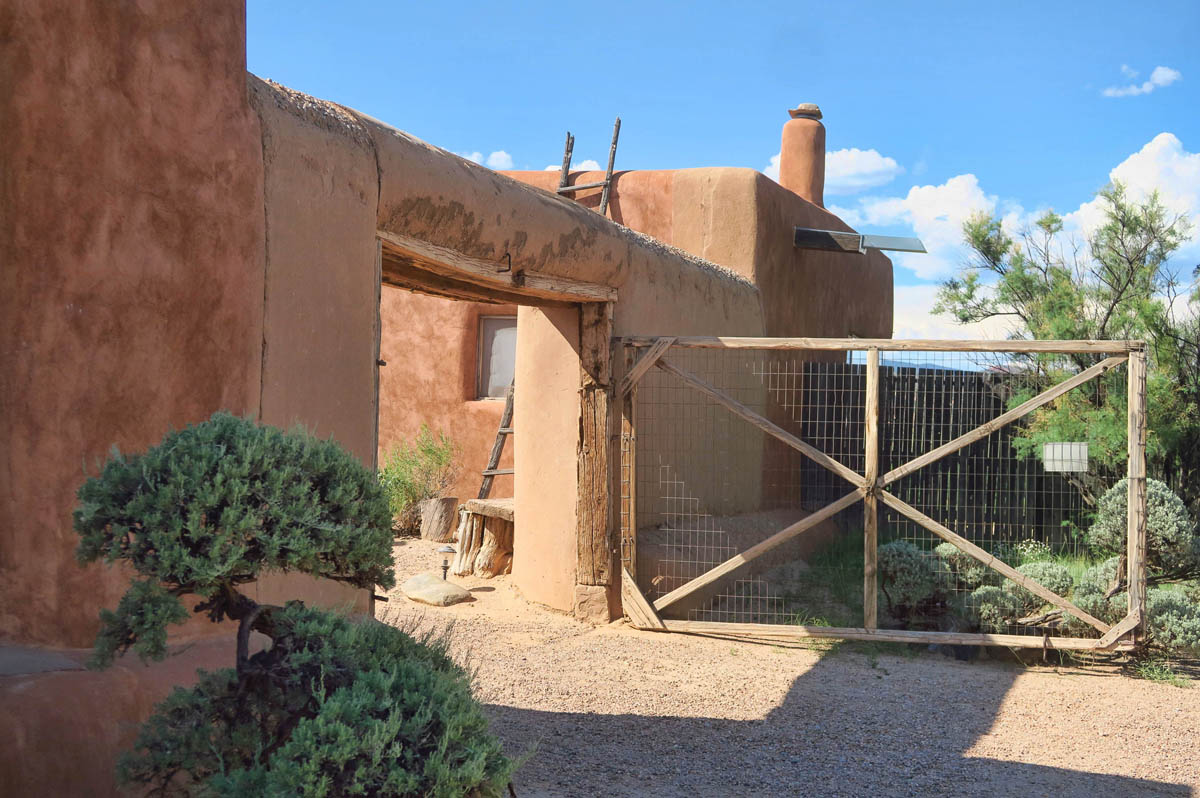 Entrance to the grounds of O’Keeffe’s Abiquiu home and studio. 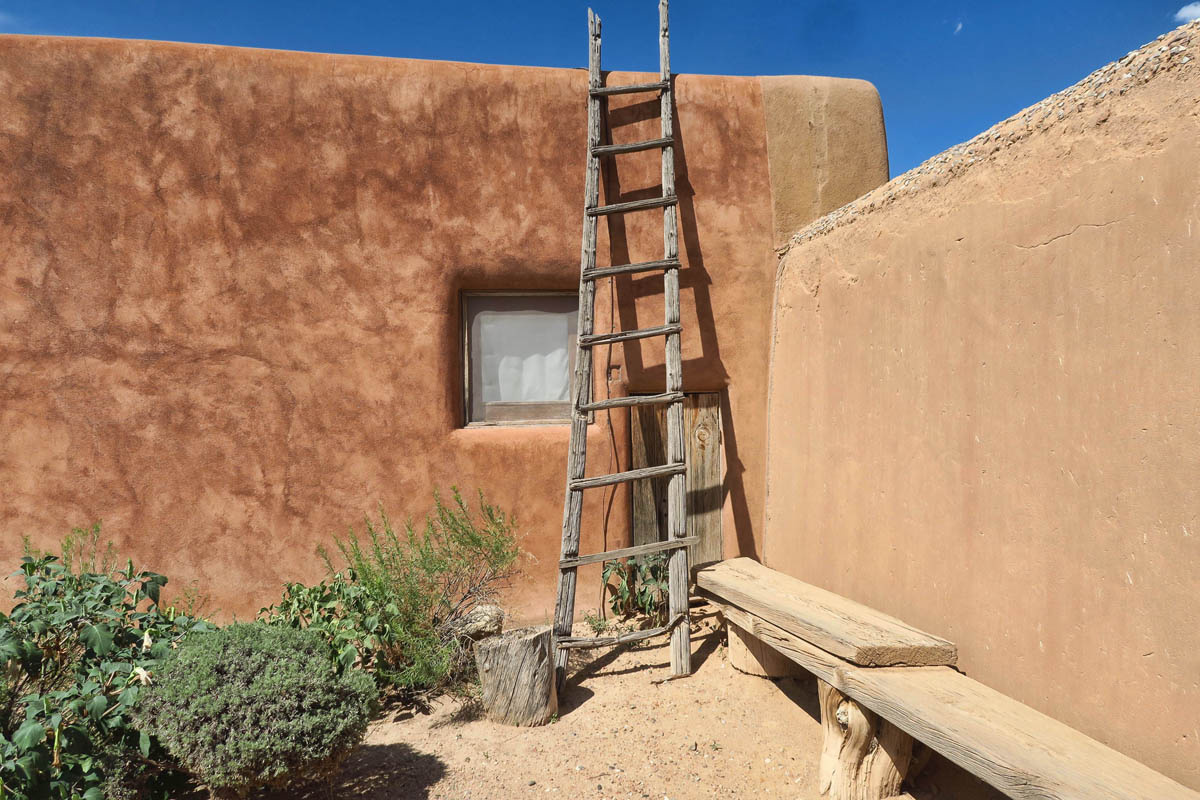 Inside the courtyard. O’Keeffe painted this ladder in “Ladder to the Moon.” 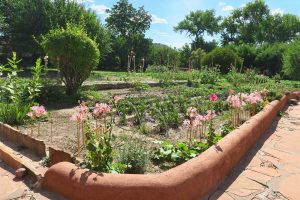 With the house came water rights to a weekly divergence from the Rio Chama used to water her large garden where she grew fresh vegetables not available on Ghost Ranch. It now serves as a place where local students grow indigenous plants. 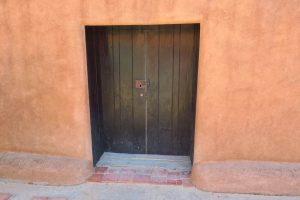 For some odd reason only an artist can understand, apparently, O’Keeffe was so enamored with this door in the enclosed patio that she painted it over 20 times. “That door is what made me buy this house,” O’Keeffe said. “I used to climb over the wall, just to look at that door.” 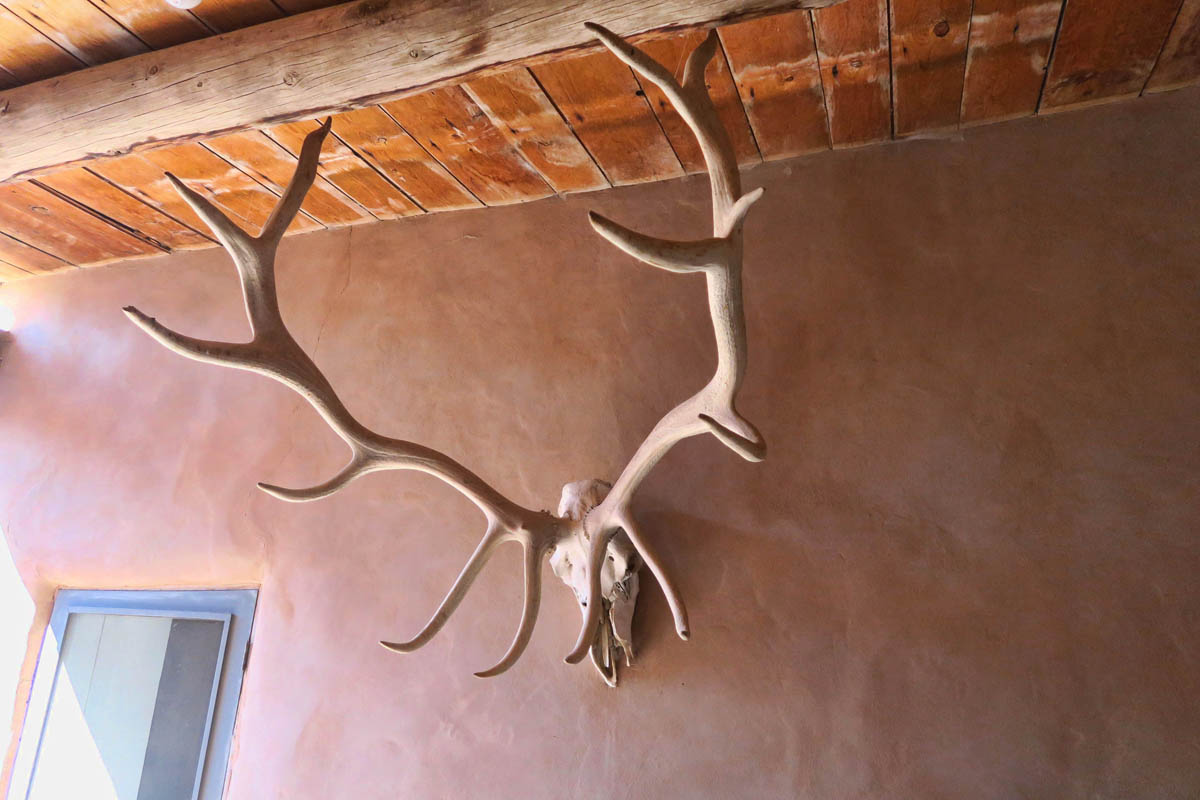 Finally, during the tour of the home, we were told to stop by the Welcome Center in Abiquiu and ask for directions if we wanted to visit “Plaza Blanca,” a spot in the Rio Chama hills where O’Keeffe found inspiration for her series of paintings she called “The White Place.” By some stroke of fortune, I found myself all alone during my visit to this special place with very few designated trails, but the freedom to scramble in and about the formations. 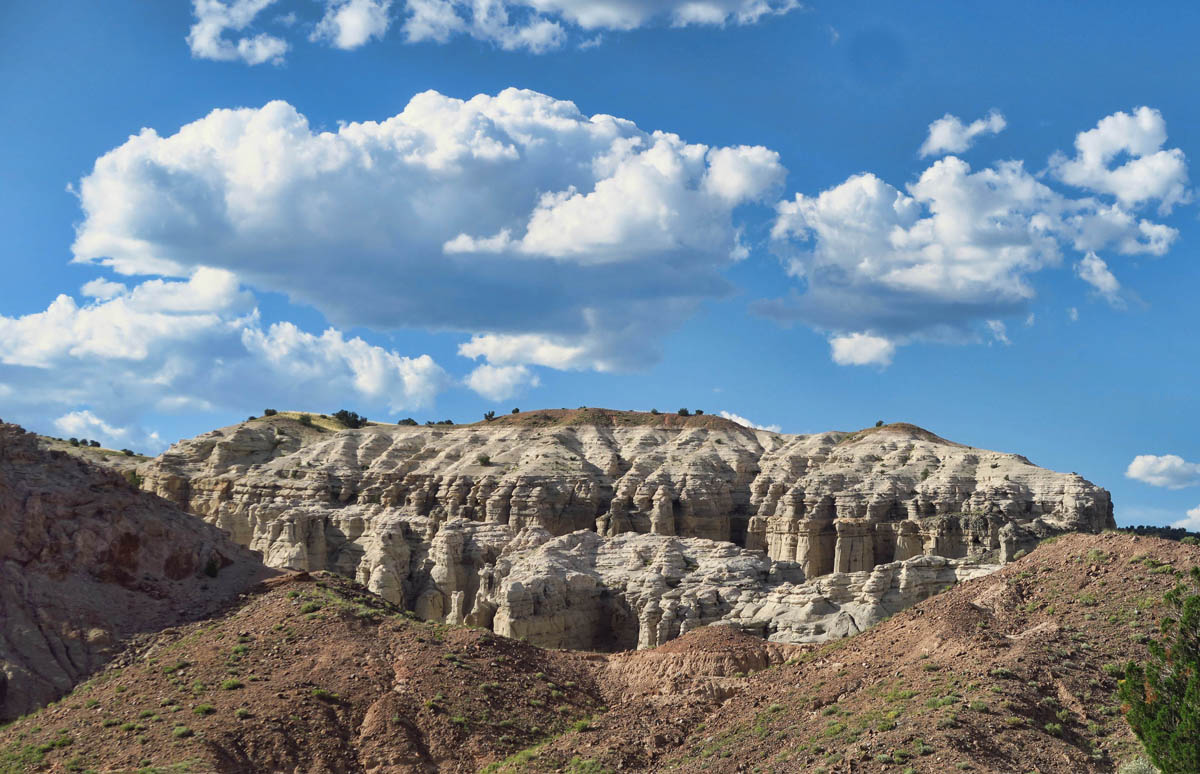 Plaza Blanca, or The White Place. 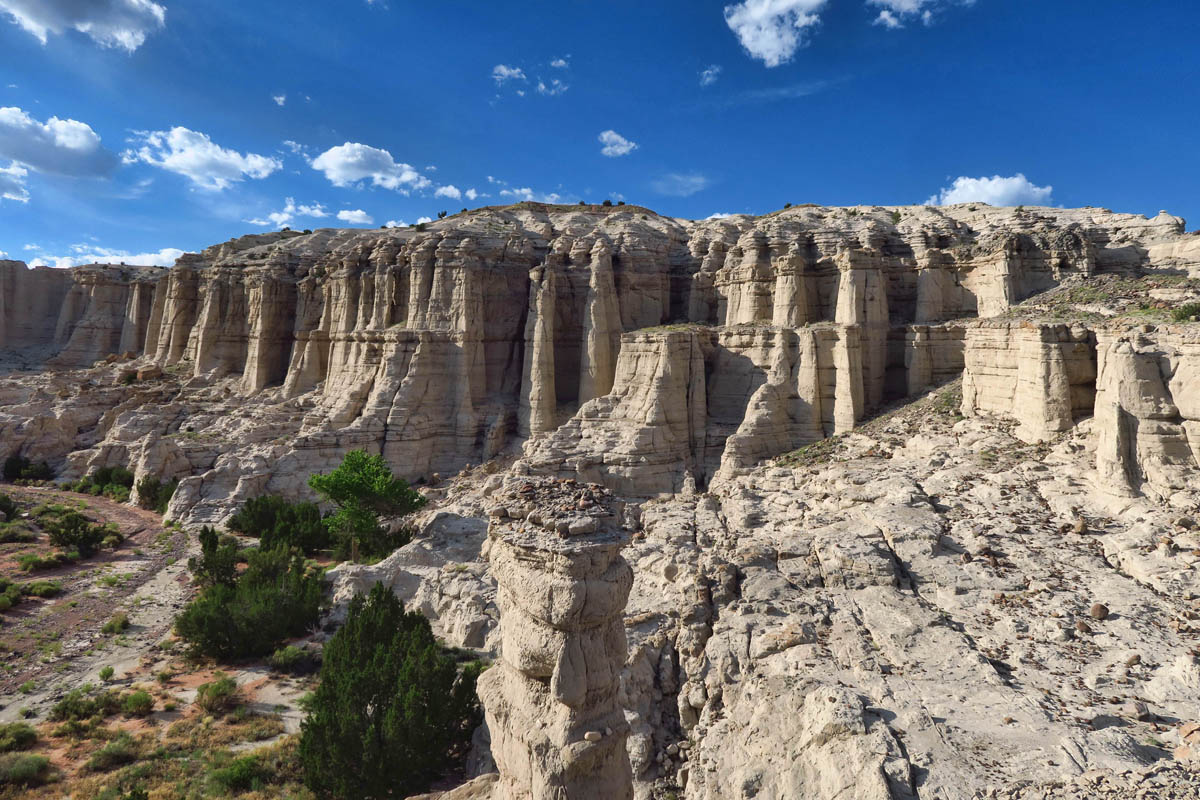 This land is now owned by the Dar Al Islam Center, but visitors are welcome to hike on the land. 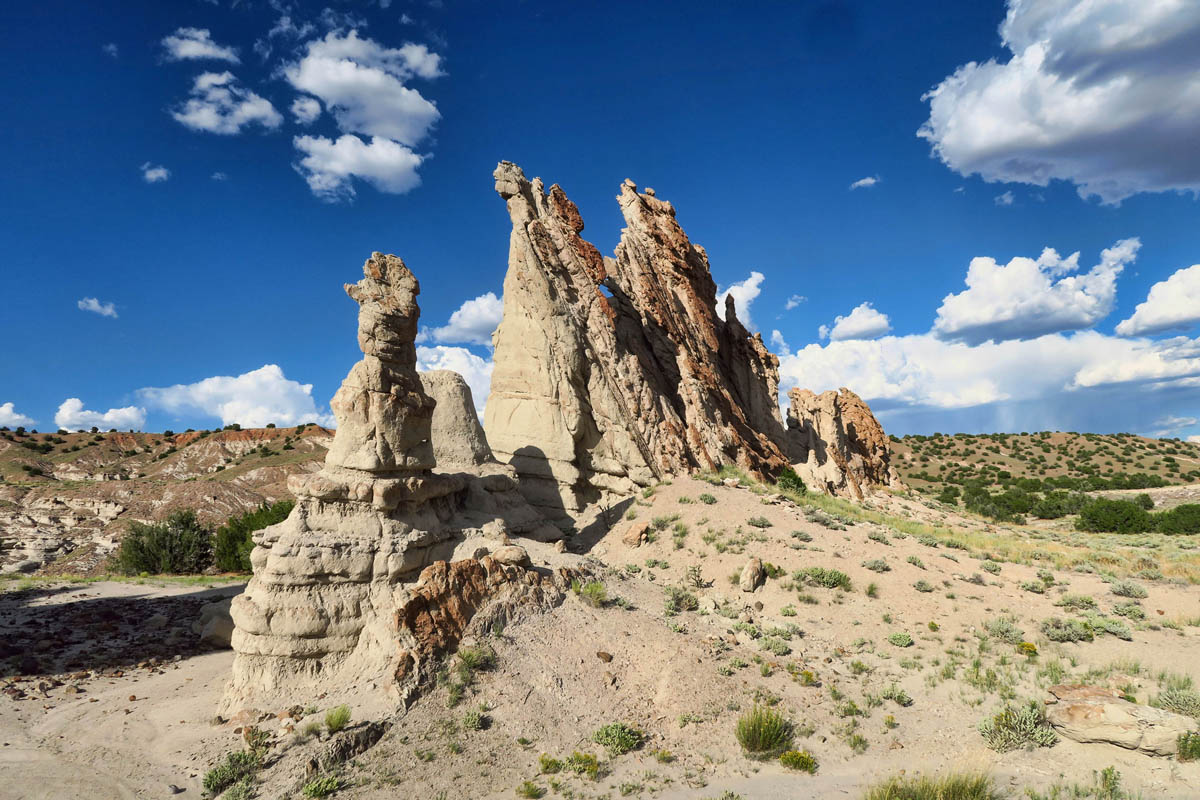 Can’t believe I have this magnificent place all to myself! Easy to see how it inspired her to paint! 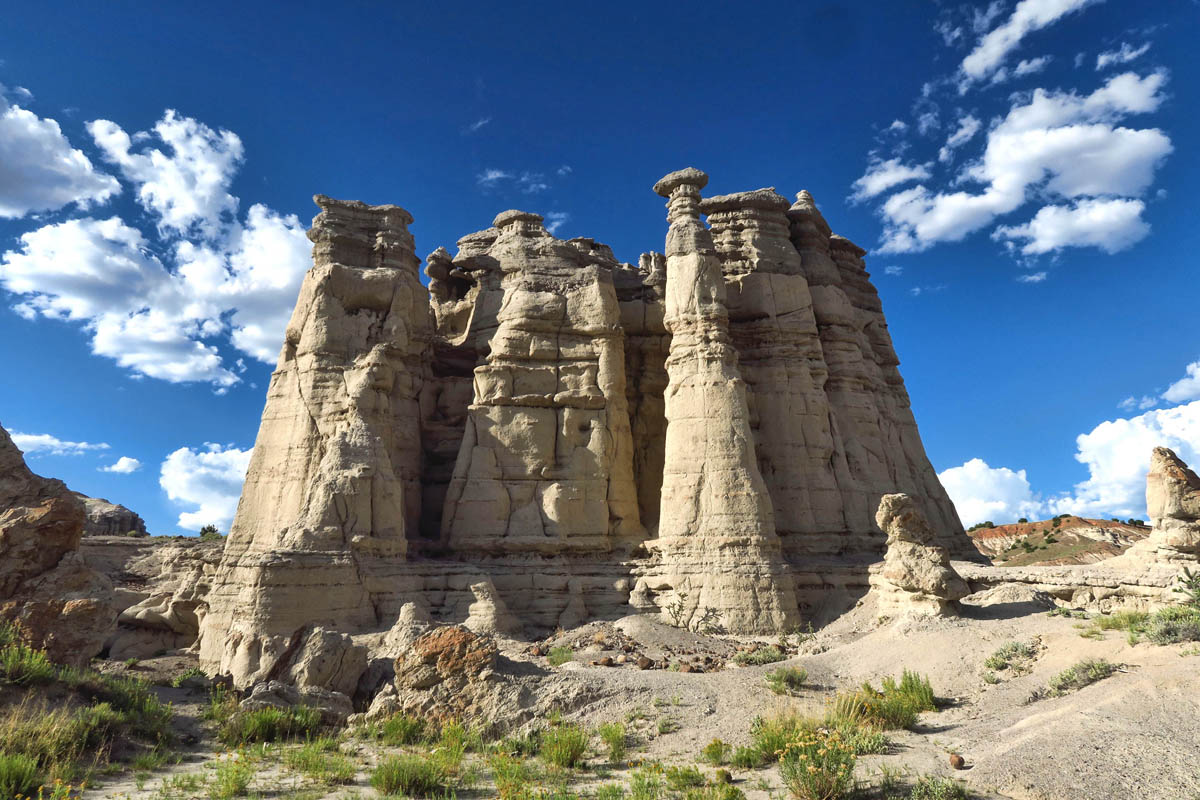 While I searched for scenes that appeared in “The White Place” series of paintings, I knew likely my search was too broad, as I had learned in Ghost Ranch to look closer and smaller. But then became overwhelmed by the many cracks and crevices. 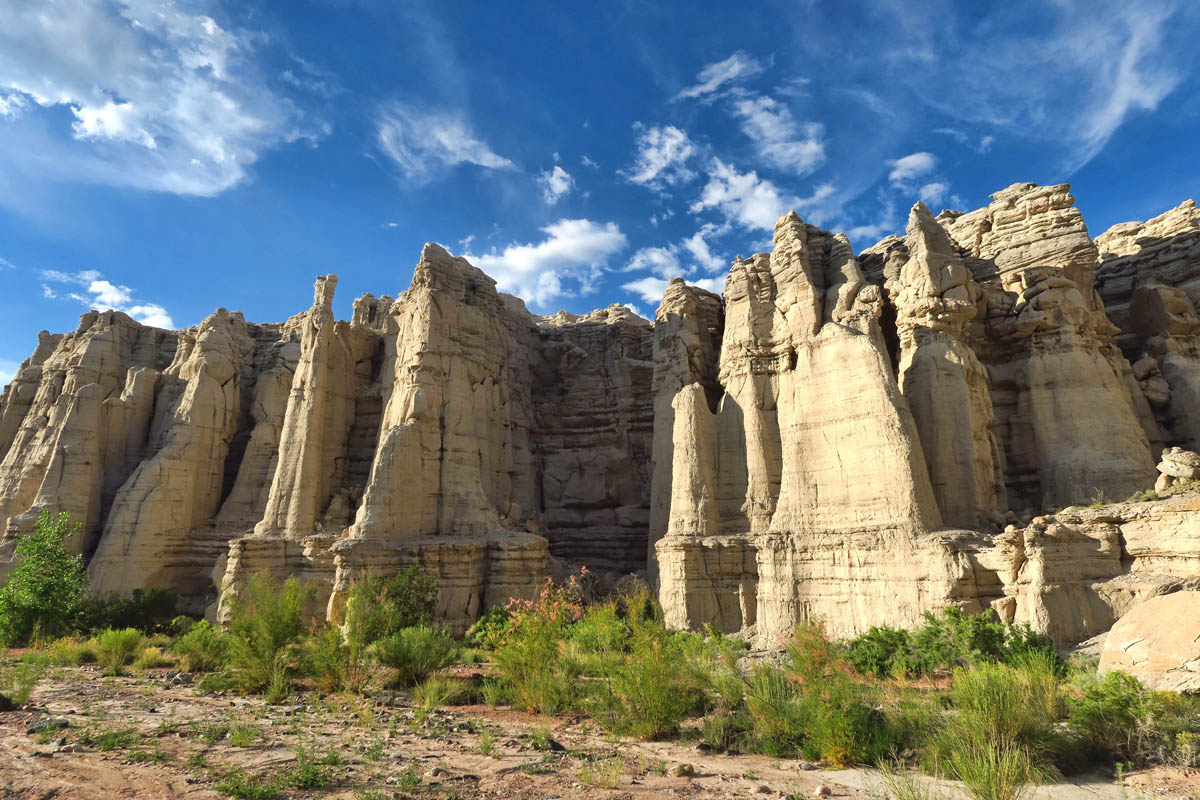 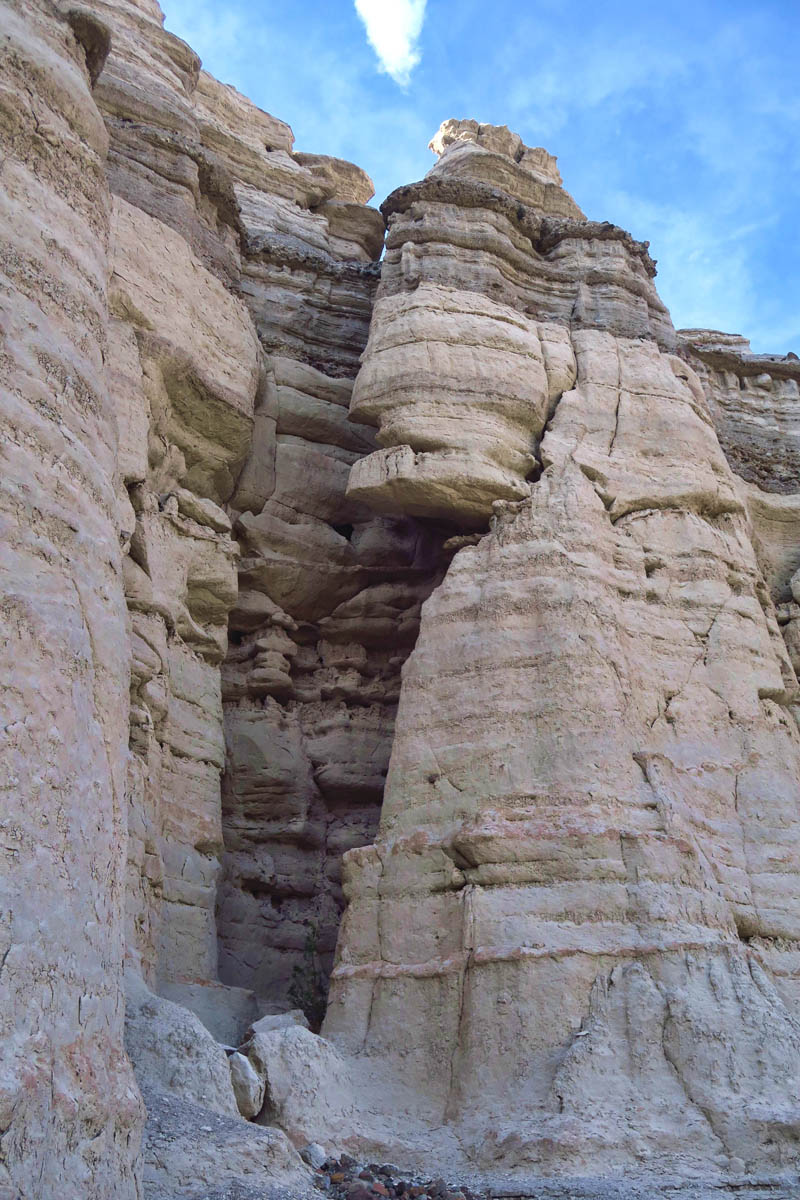 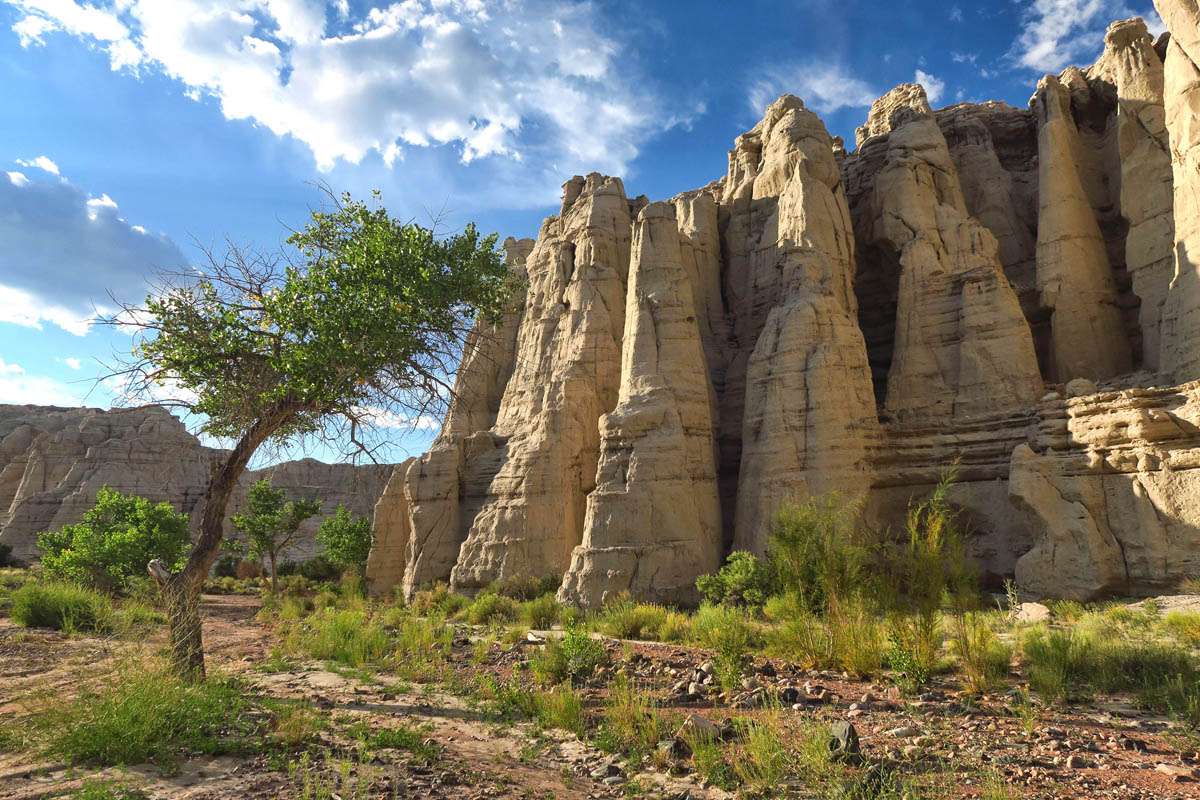 “There is something wonderful about the bigness and the loneliness and the windyness of it all.” ~ Georgia O’Keeffe

Each time I pass through New Mexico, I discover other gems worthy of further exploration. I always vow to spend more time here, but it seems I am always on my way to someplace else. However, I realize more with every visit, New Mexico is a worthwhile destination in its own right. 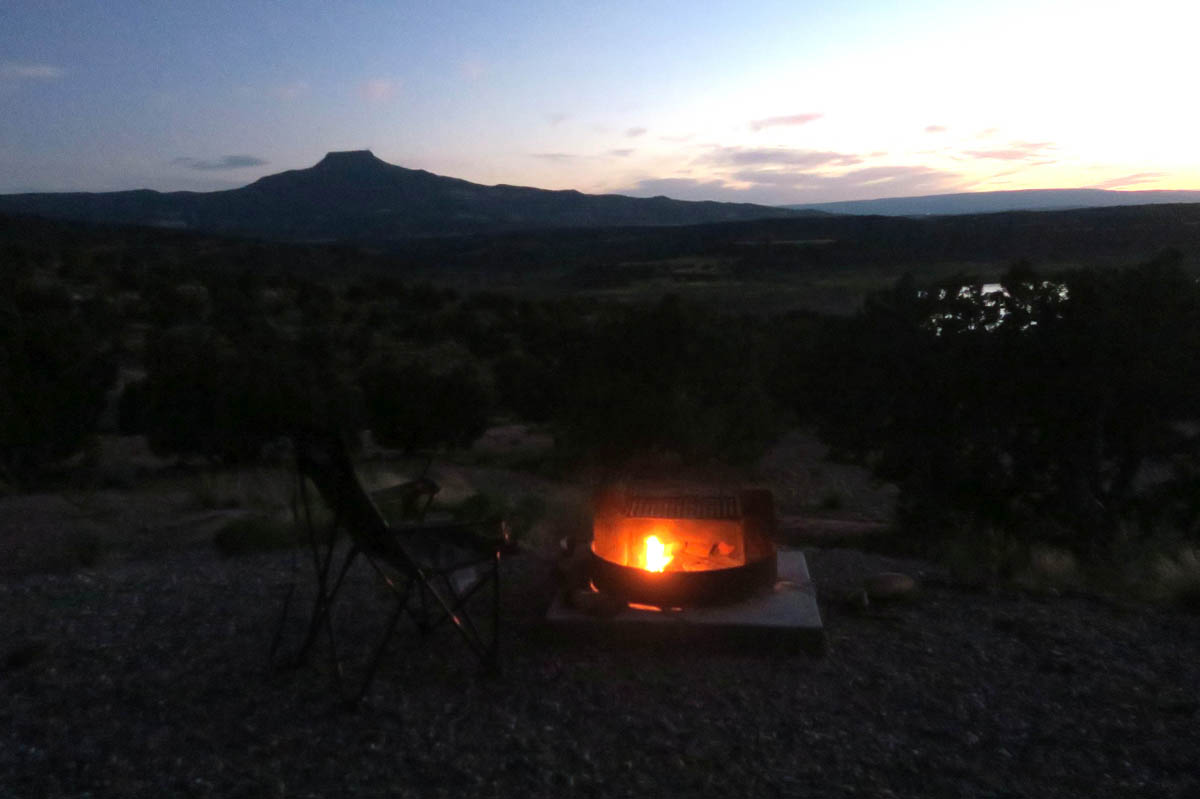 I am not much of a “campfire person” after living full time in my RV, because it makes everything smell like smoke for weeks. But this night in the Riana Campground with the full moon rising was too perfect to pass! 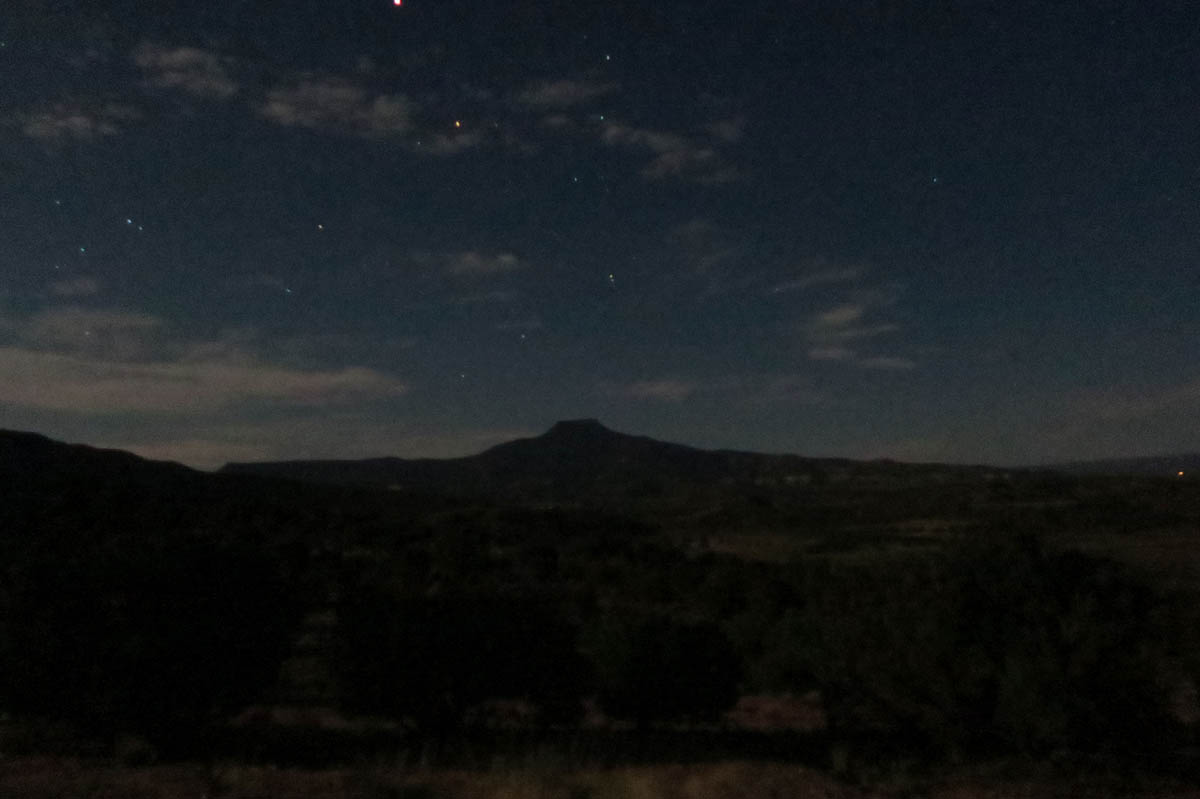 Maybe not “blog worthy,” this photo helps me remember what it was like watching the stars over Pedernal, known as O’Keeffe’s mountain where her ashes are scattered.

“It’s my private mountain. It belongs to me. God told me if I painted it enough, I could have it.” ~Georgia O’Keeffe

10 thoughts on “Letters from Georgia”