Once back in Texas, my brother Don was up visiting from Mexico. When we are together, as invariably happens with any family, the conversation often reverts to our childhood. And at some time or other, one of us waxes nostalgic to say, “I wish I could see the old house…just one more time.”

As I get older, my desire to visit the old house has only grown stronger. I hadn’t been back there in 40 years. So recently, Don finally decided to put some action behind our nostalgia. He did the legwork to find out through tax records who was the current owner. He tracked them down, and sent a letter asking if it was possible for us to return for a look around. I was shocked to learn he had received a response. Yes! We were to give the owner a call, and he would meet us there to unlock the gate…

The two-story gable roofed house where we grew up was as much a part of my family as we five individuals who occupied it. Like a “sixth family member,” if you will. It seemed huge as a child. Half the upstairs was uninhabited. My older brother Don and I used that extra space for everything from a Halloween Haunted House, to a doll house constructed under tabletops, complete with electrical lighting. At one point, we converted into a makeshift roller-skating rink. Pity my poor mother in the kitchen below as our plastic wheels vibrated over the rough wooden floor as we went round and round and round again, mimicking the owner of the local rink, “All skate slow, please…all skate slow.”

Being the only girl sandwiched in between two brothers, I got my own room at an early age. My room was on the bottom floor, while the rest of the family was on the second floor. My room was my inner-sanctum growing up, particularly during those awkward teen years.

One of my earliest memories of my childhood was redecorating that room. I persuaded my parents to paint over the old floral wallpaper, and they indulged me with my chosen color of Pepto Bismol Pink (what was I thinking?) My Mom took me to the Montgomery Ward catalogue department so I could pick out bright fuchsia drapes and bedspread to match. I spent hours in that room playing with my “extended family members,” Barbie and Ken, Skipper, Midge and Allen, until they were put away and replaced by make-up. I would sit for hours at the dresser in front of the mirror trying on different looks and hairstyles after having tightly closed the drapes and stuffed a Kleenex in the keyhole to make sure my brothers weren’t spying.

In later years, my attention turned to my Radio Shack turntable, stacks of vinyl to include Led Zeppelin, Jethro Tull, Hendrix, Joplin, and the Beatles. Psychedelic black-light posters now covered the pink walls, as did wall hangings made from linking soda can pop-tops together. I can still conjure up the detailed memory of coming home from a shopping trip with my family, retreating to my room, locking the door, and slowly pulling my new album out of the paper bag. I’d carefully slit open the cellophane wrapping, then slowly pull out the liner notes, looking them over just long enough for a preview before I carefully slipped the vinyl out of its sleeve and sent the disk, along with my emotions spinning… (cradling my arms, swaying back and forth as Brian Wilson sings “There’s a world where I can go and tell my secrets to…In my room…in my room.”) 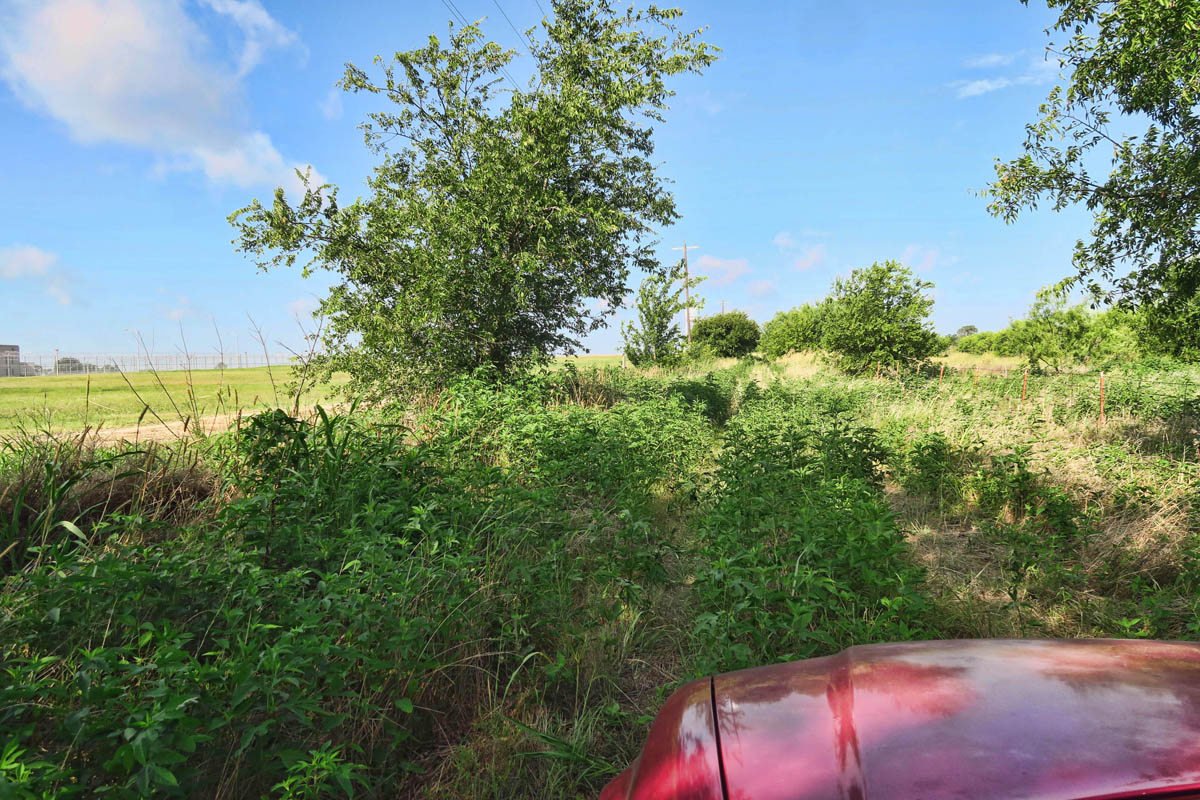 The gravel road up to the old house has all but disappeared. There used to be zero vegetation along the road, as my dad farmed the land to the right, and always kept the road graded and the ditch clean. 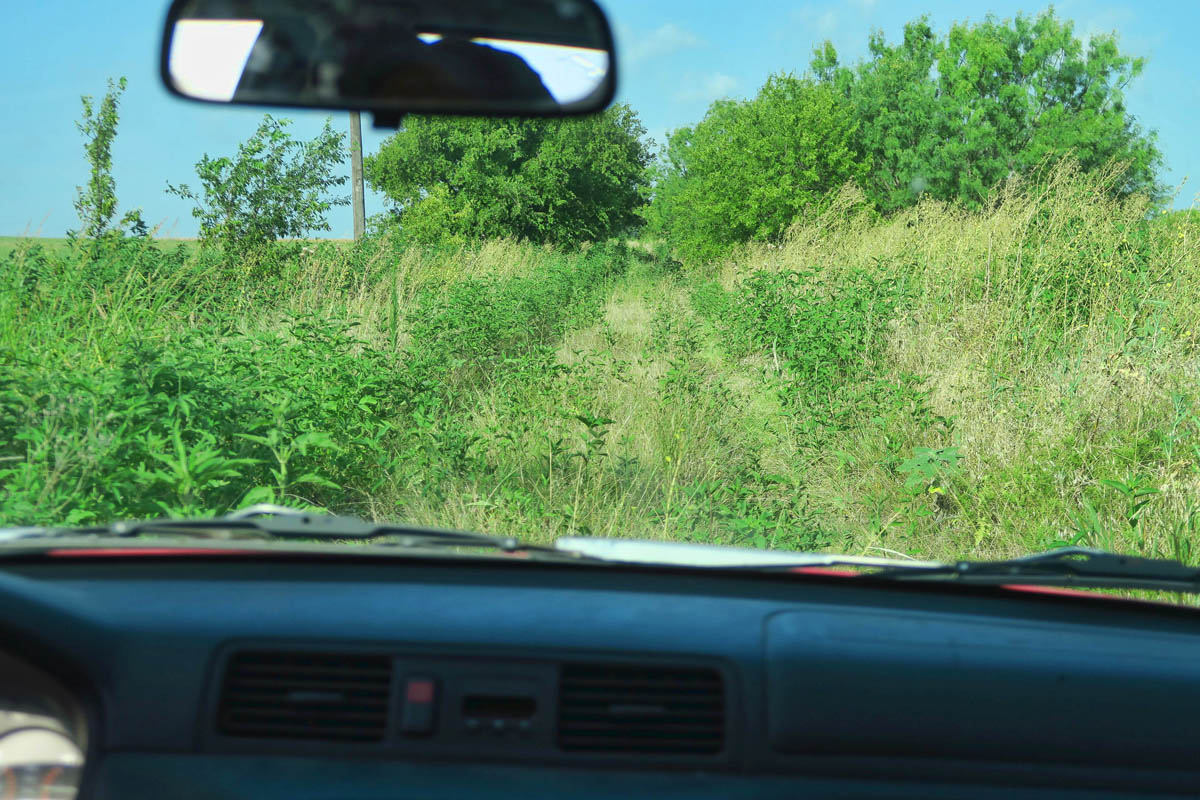 We all know those stories about having to walk for what seemed like a mile from the bus stop…this L-shaped gravel road was mine. 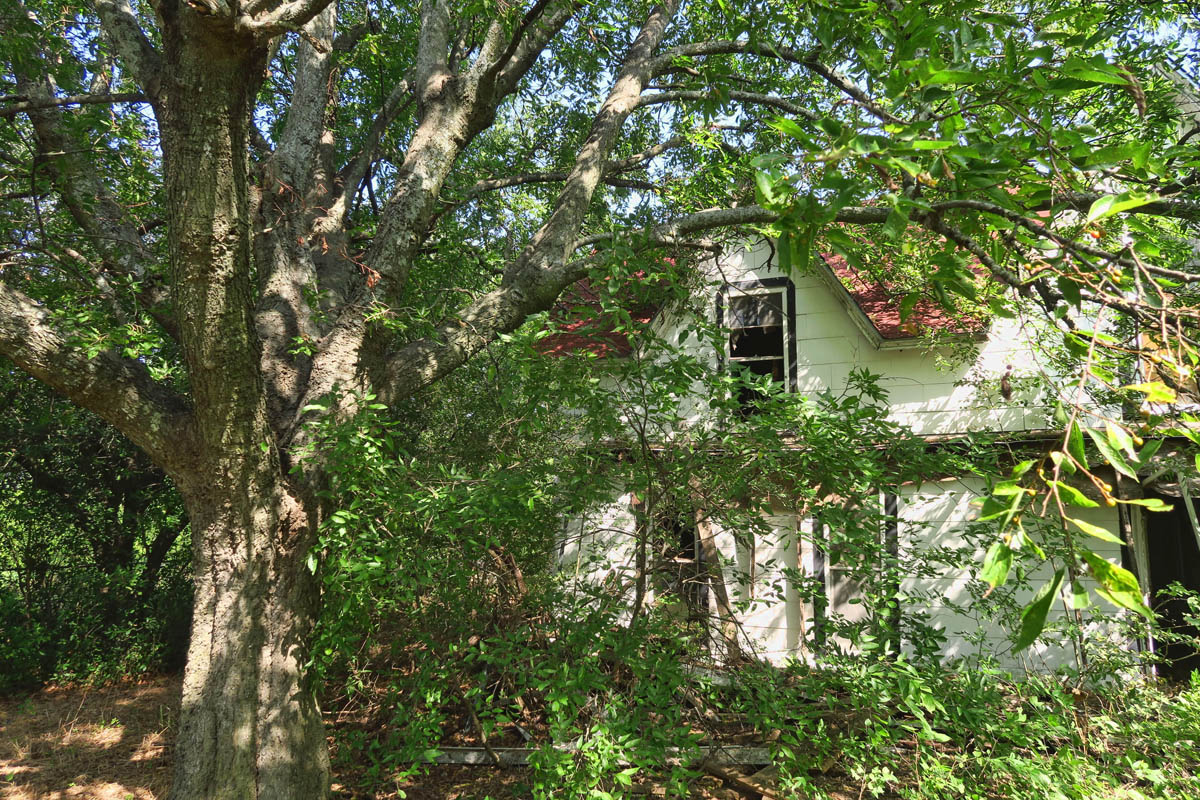 As a kid, the old hackberry tree on the left seemed huge. Now, it’s gigantic. 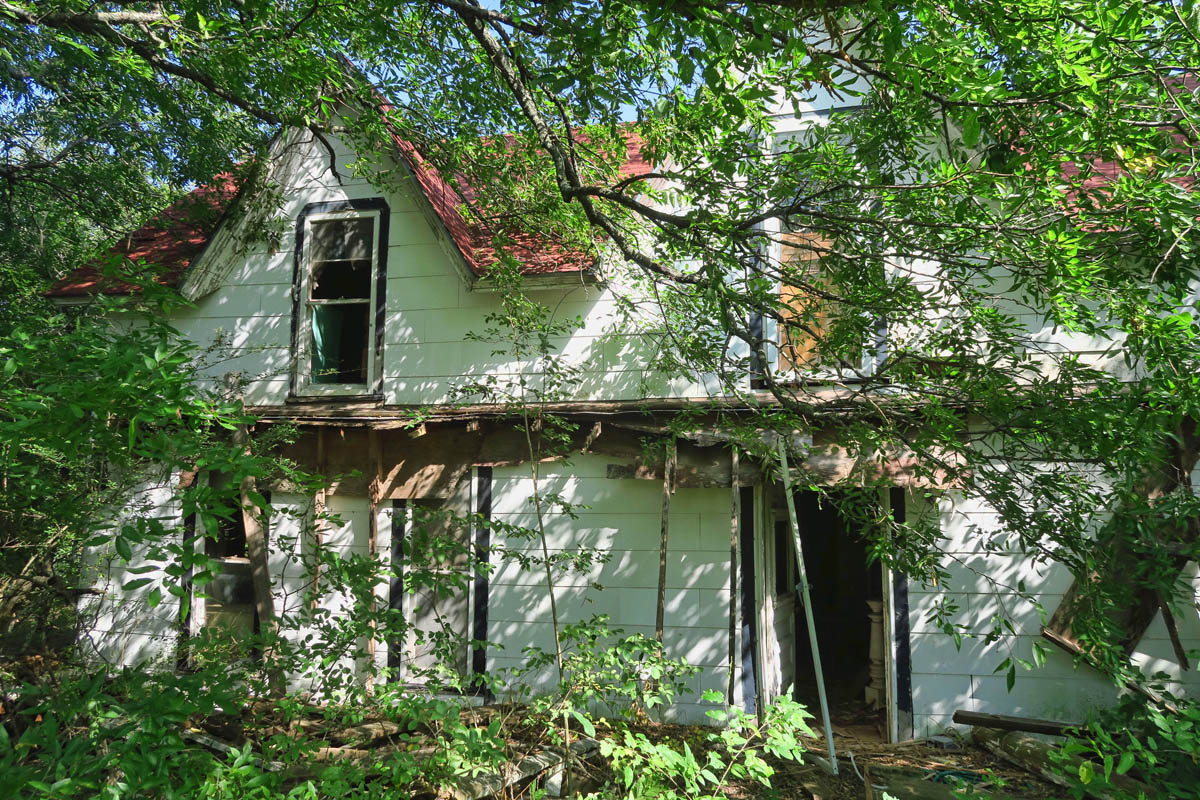 There used to be a wide front porch with an overhanging roof supported by columns. It has all collapsed now. 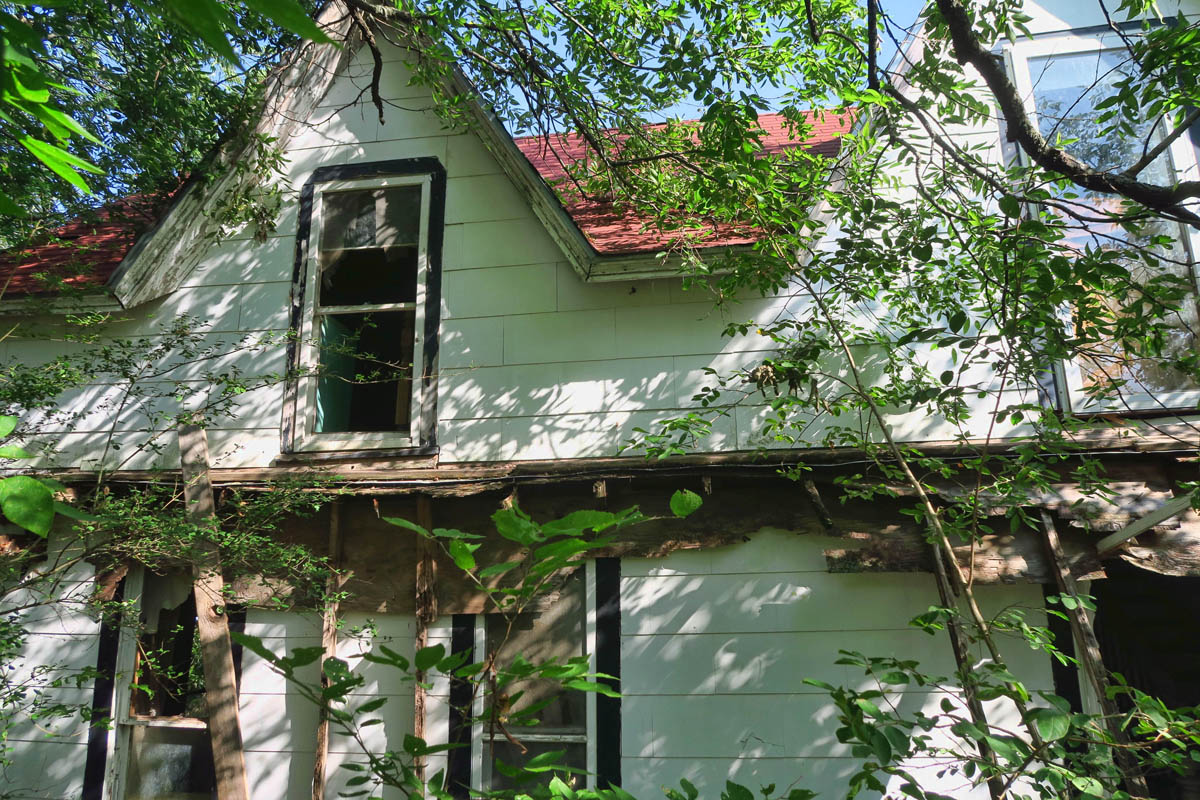 The roof was forest green when we lived there. My parents also installed a very snazzy, (though asbestos) green and white pin stripe siding. One of the subsequent owners painted over the pinstripes with white paint, and installed a red roof. 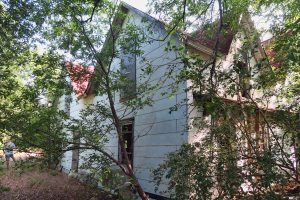 Those big upstairs rooms with their dormer windows offered endless playtime opportunities for a couple of kids who lived in the boonies.

So many memories in that old house. Mine wasn’t exactly a “Norman Rockwell Childhood,” so I had a lot of trepidation in seeing the old house again. However, there were enough good memories to counteract the PTSD of the not so good ones. Like when my Mom got her brand new Tappan Coppertone stove. For months after, we came home from school to something lovin’ from the oven.

My Mom especially loved to make Christmases special. We’d cut down a cedar tree from “Granny’s pasture,” and cover it with our traditional lights, balls and wadded-up clumps of icicles. “Santa” would load it up with toys and gifts enough to spoil us rotten, as intoxicating aromas filled the kitchen.

My 12th birthday party was a special memory when I got my first camera, a “Polaroid Swinger.” Several years later, another memorable milestone was my High School graduation party where we all filed out the upstairs window onto the narrow rooftop over the front porch for some star gazing. The boys had to leave at midnight, but the girls all stayed over for an all night pajama party.

I moved from that old house at the end of the summer in 1972. I loaded up all my worldly possessions and left for college at UT Austin. While I would return later for visits, I would never live in the old house again. My parents selflessly moved across the county line and built their current home in the adjacent county because the High School in our old county was not an accredited school for college. The school district stopped all transfers, so to make sure my youngest brother Stephen had the same educational opportunity as my older brother and I did, they left the old house for good… 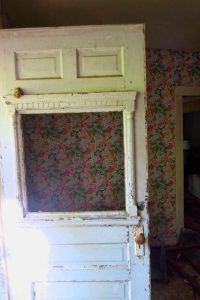 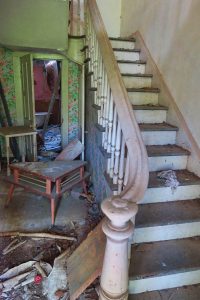 The backbone of the old house, with all its vertebrae still intact. My room was just to the right, out of view before the staircase. 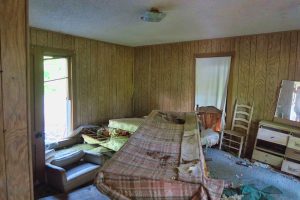 Turn right at the base of the stairs, and enter “my room.” Seeing it was a bit of a shock. My pepto bismal pink walls were paneled over. How dare they! 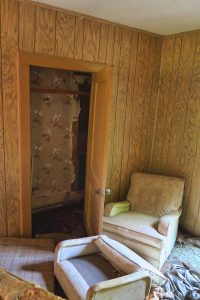 Inside the closet is the original floral wallpaper. When my parents painted the walls, they didn’t paint inside the closet. I found newspapers used for backing the wallpaper dating back to the early fifties. In the corner where that old chair is now was my shrine to the best music ever made. 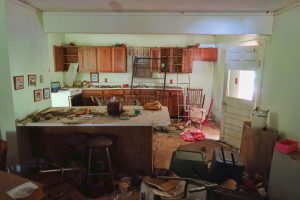 Looking across the “bar” through to the kitchen from the dining room. 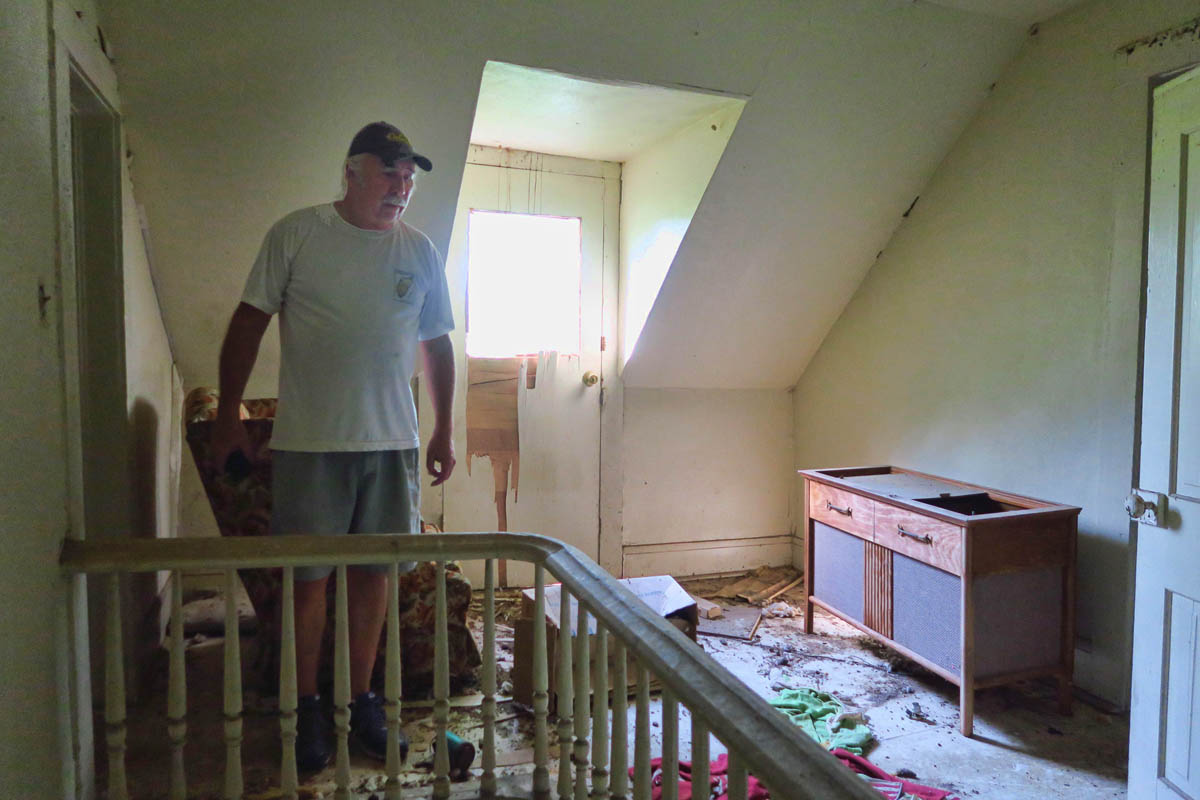 My brother Don standing outside the doorway on the left to what was his lair, a mad scientist laboratory elaborately wired with amateur radio equipment and sophisticated spyware for tapping his sister’s phone in the room directly below. So elaborate, his high school class took a field trip out to our house to see it. 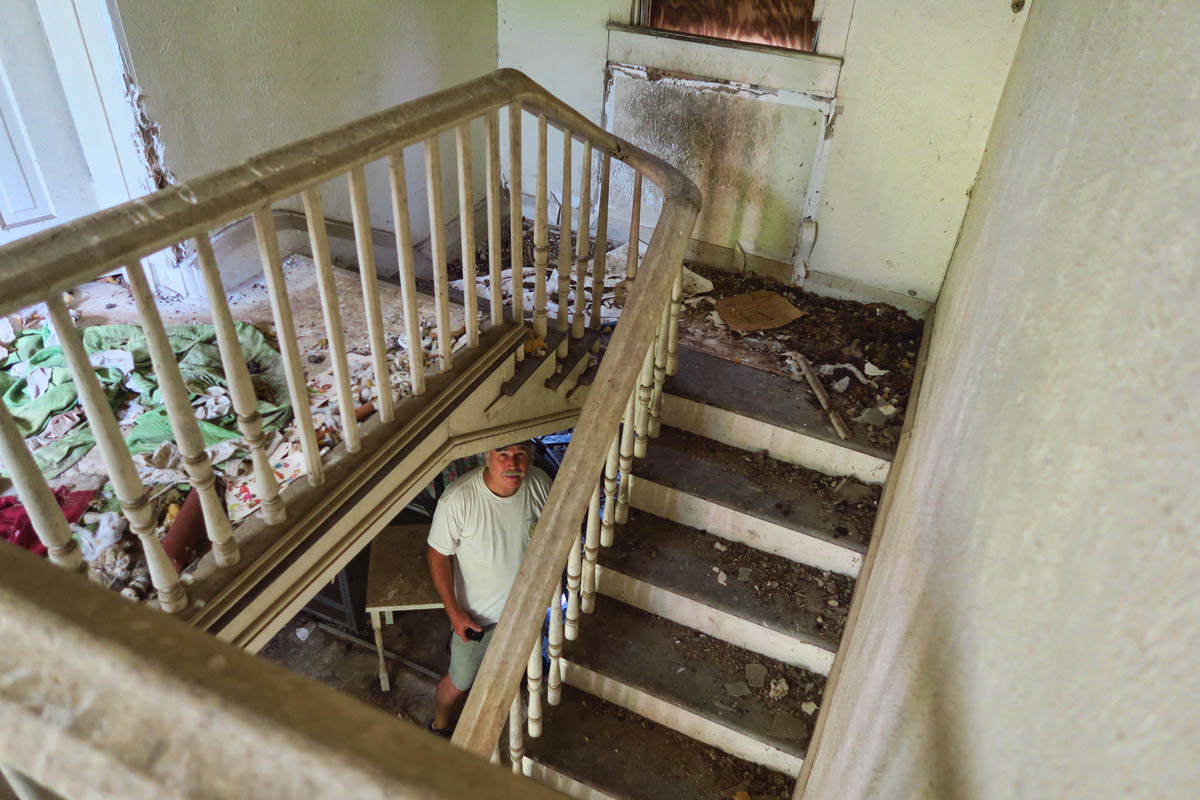 The old banister is surprisingly still sturdy (as is the man beneath it.) 😉 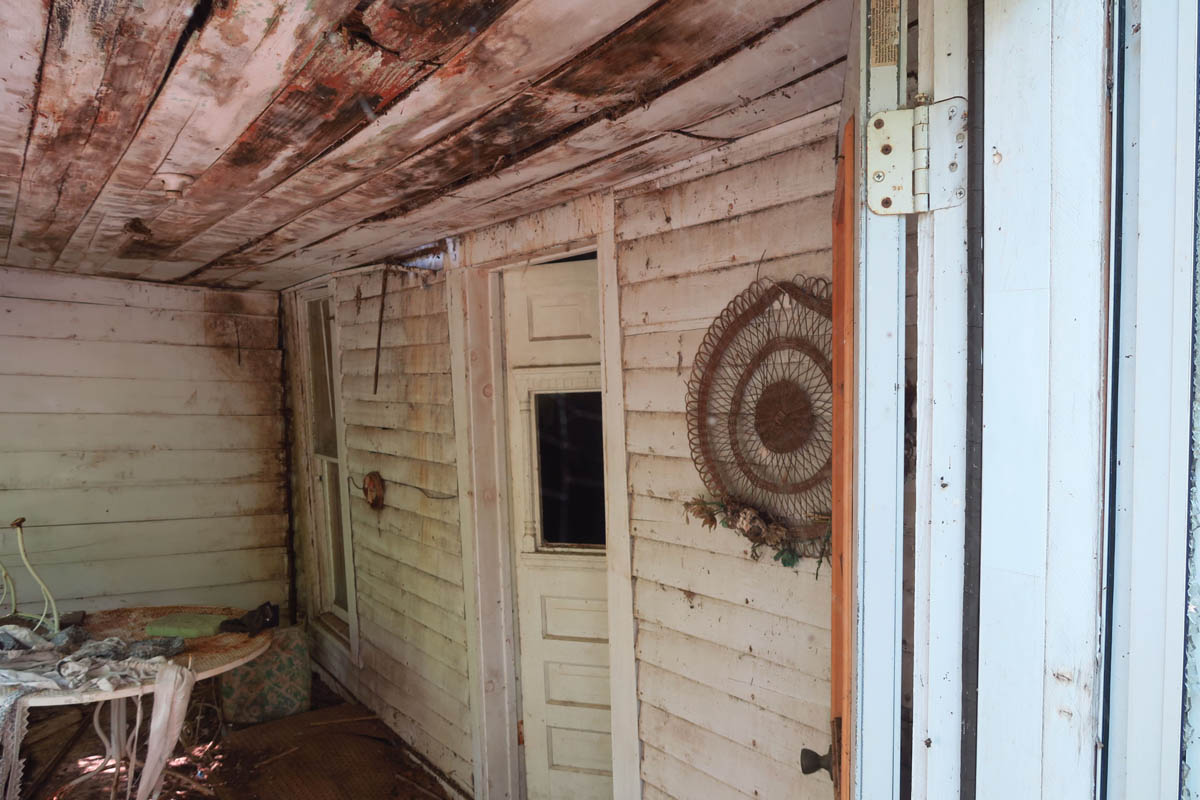 The enclosed “back porch” and rear entry to the house.

“We’ll need to take Mom’s CRV. We’re gonna need high ground clearance,” Don told me on the morning when we were to meet the owner. “The place is so overgrown, you can’t even see the road anymore.”

The current owner had warned us we likely wouldn’t recognize the place. The floors were falling in, and it had been abandoned, therefore inhabited by all kinds of wildlife, including a family of vultures that had entered through a hole in the roof. He had at one time tried to restore it, but they wanted $40,000 to stabilize the foundation, with no guarantees it would be successful. At that point, the current owner had no other choice but to let nature organically reclaim it. It would appear we were just in time for one last look.

The weeds in the front lawn were now hip-high. We wove our way through by stomping a path to the front door, still intact. However, the front porch had collapsed, as had its narrow roof overhead. The columns holding up the porch roof were now littered on the ground, still recognizable amidst the debris. But without the front porch and portico, the entrance seemed almost foreign.

Walking through that front door was a sucker punch to the gut. The old house was truly falling down within itself. My eyes couldn’t recognize most of it, but my gut could. It was a hundred “déjà vu” moments, as I wandered through the house trying to place furniture, events, and memories. Between the changes previous tenants had made, and Mother Nature’s own demolition, much of it was unfamiliar. However, while the décor had changed, the structure was the same, and slowly, the memories returned as scenes played through my mind from 50 years ago like it was yesterday. The old banister, worn smooth from years of “sliding down thuh,” was still intact. Like the backbone of the old house, it stood as sturdy as I remembered.

Seeing all the abandoned garbage littering “my room” felt personal. They had paneled over my pink walls. What once felt like a bright and cheerful space was now dark and dirty. Nothing looked familiar, really. Until that is, I poked my head into the closet. There inside covering the closet walls was the original floral wallpaper. Instantly, I was transported back to that secret hiding place where all my treasures were stored.

I wish I had taken a video of the current owner as he told stories of the more recent chapters of the old house. But I am grateful for what memories I took away, as not many have the opportunity for such an intimate look at the past. I told him, “You have given me a gift no one else could have given.”

The owner left us there to spend some time, instructing us to lock the gate behind us as we left. Don asked if he would mind if he took the original doorknob from the door to his room as a memento. “The house is falling down anyway, so take whatever you want,” he said as he drove off in his truck. We each collected our respective mementos, then took one last look as we followed our tire tracks back through the weeds, locking the gate behind us. This time, for the last time… 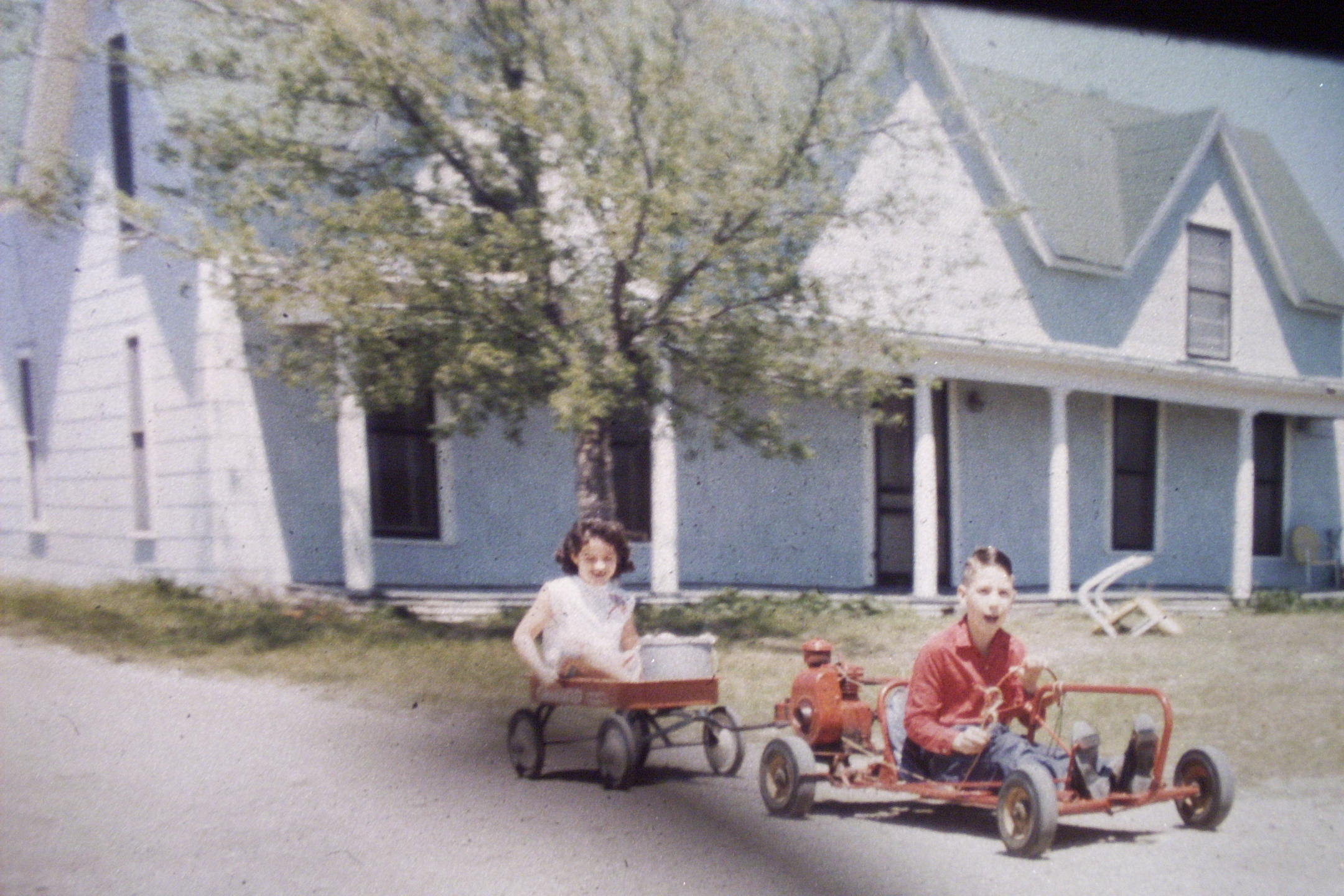 23 thoughts on “This Old House”