I’m taking a “real time” break from recounting my recent trip through southern India. I’ll get back to cruising the backwaters of Kerala in my next post, but for now, it’s “BLUEBONNET TIME” in Texas! 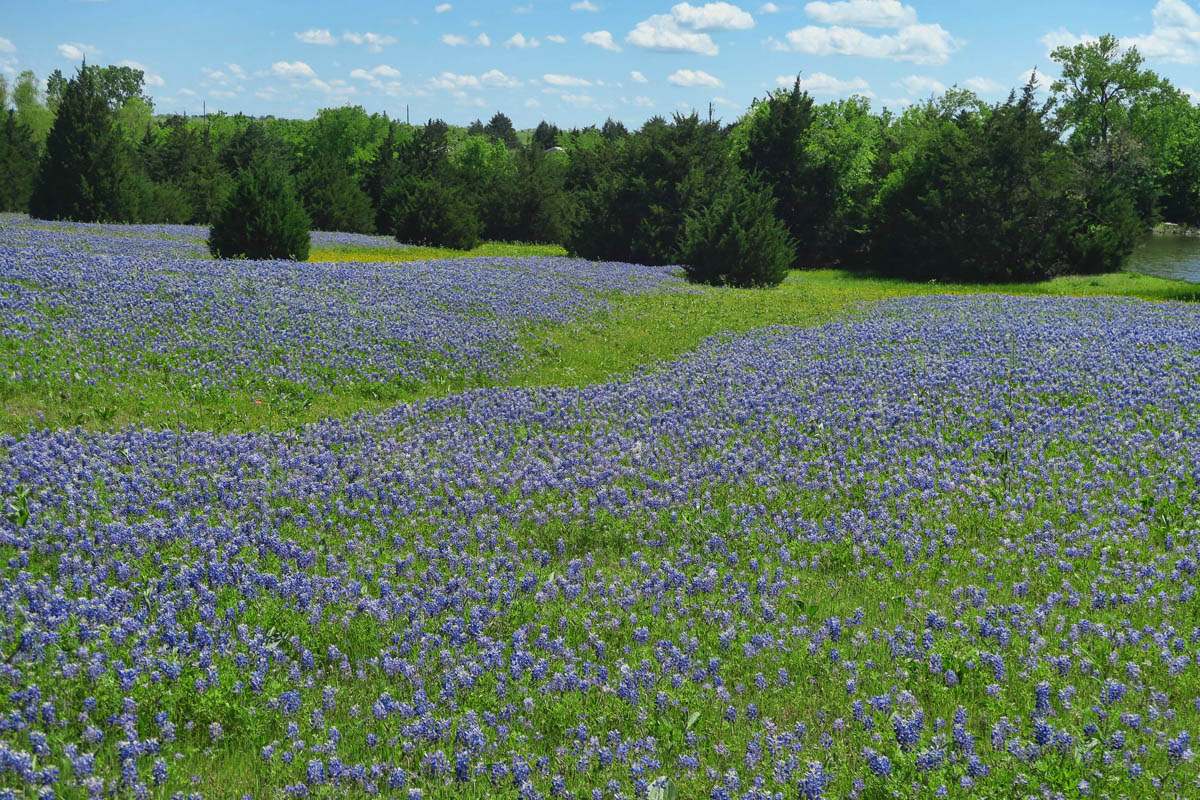 This was one of the few fields we saw this year. Most of the other flowers were confined to the roadside. 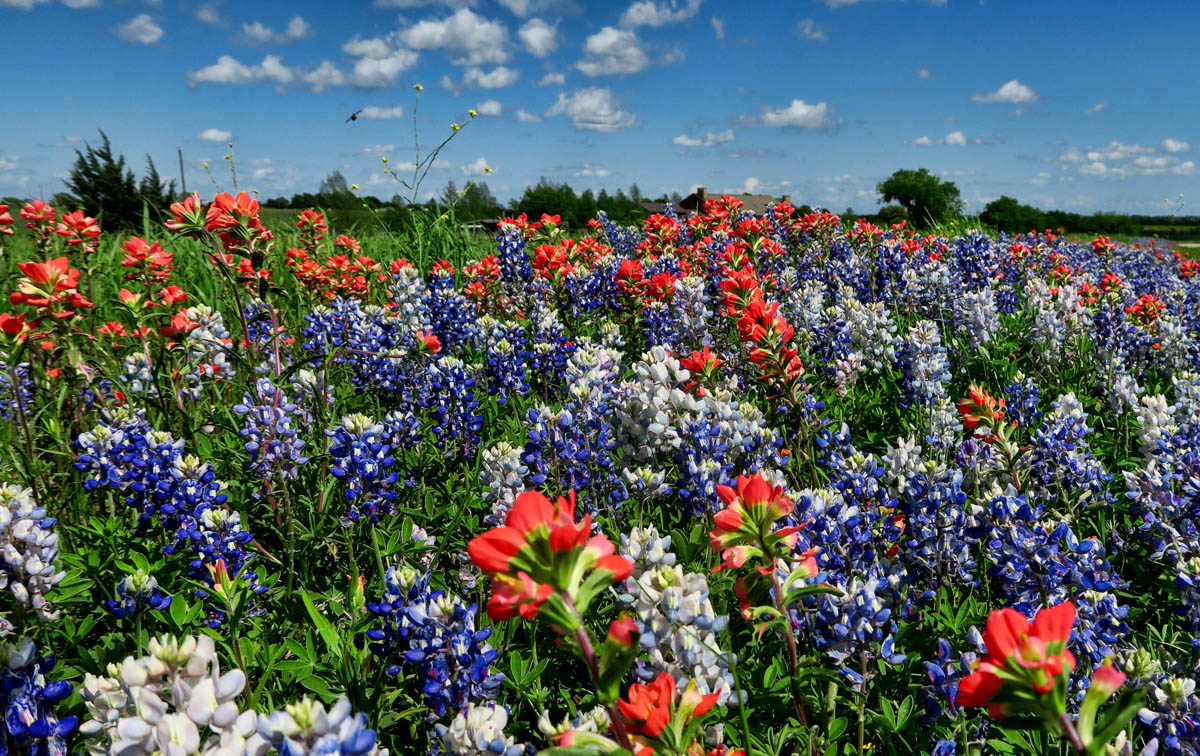 My favorite patches are those with Indian Paintbrush mixed in. 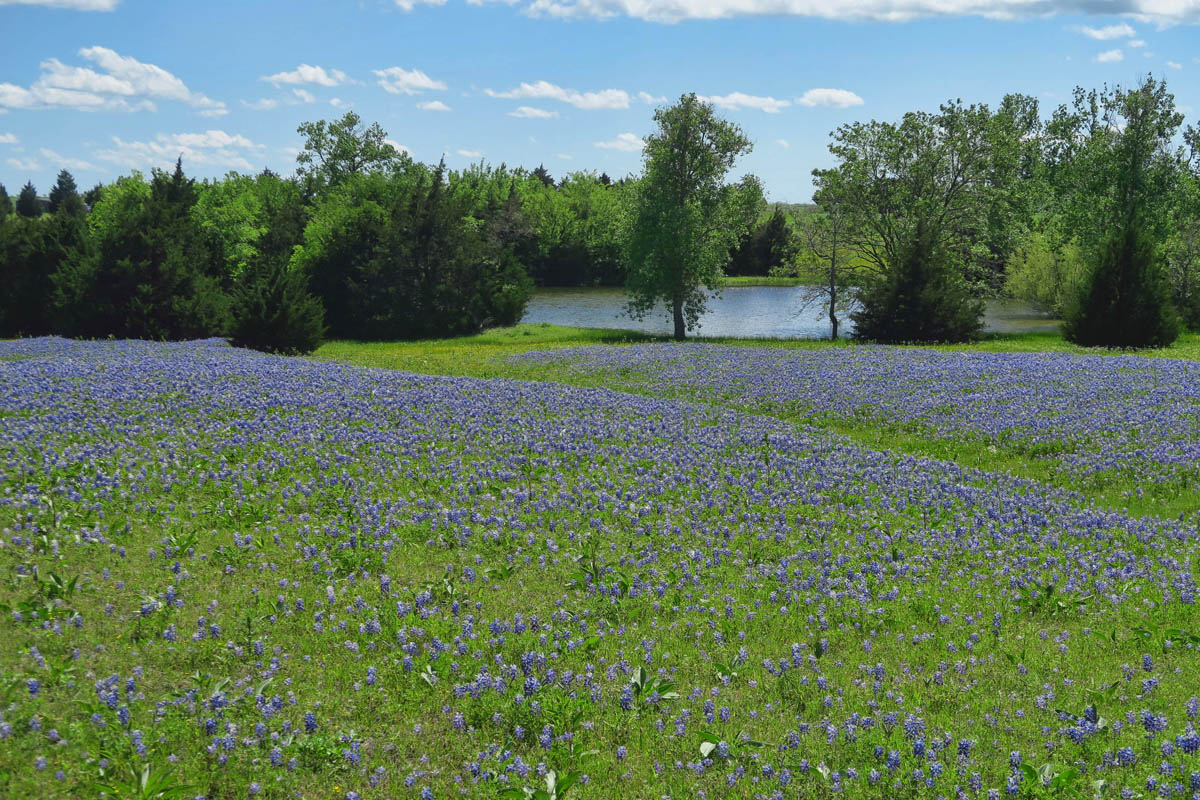 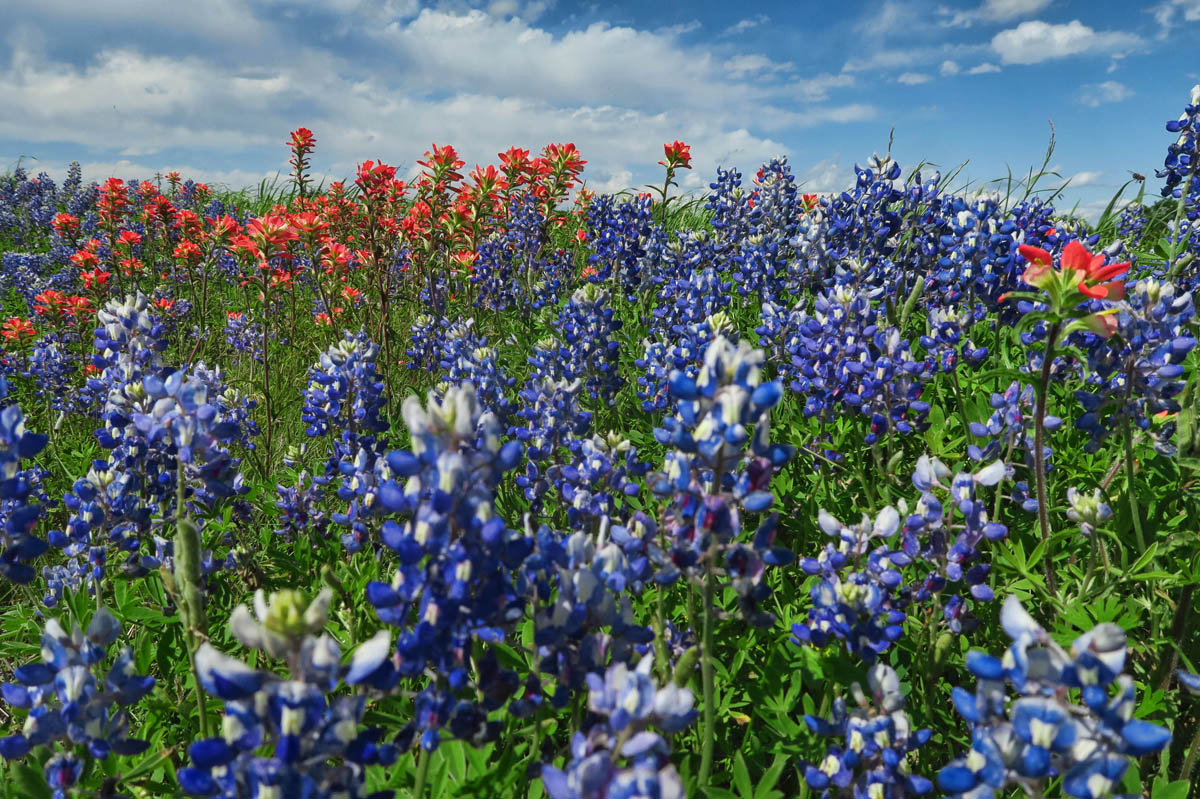 I accidentally hit the “Record” button on the camera here when I realized I was standing in a fire ant bed. If I had posted it, I would have had to “BLEEP!” it!

My native home state has very few things that are pleasing to me. I could likely count them on the foot of a three-toed sloth. But certainly in that count would be the Texas State Flower, the bluebonnet. Its intense deep blue color that blankets the rolling hills delights the eye while its delicate powdery fragrance wafts through rolled-down windows as we drive the country roads in search of our favorite fields. It’s something I look forward to and try not to miss each April.

Texans are chomping at the COVID bit to be “liberated.” I consider this plight to be a bit ironic since I sat at my 14-day quarantine camp in the Lake Whitney Army COE park upon return from India and watched the bass boats line up at the boat ramp. Country tunes blared from the in-dash radios, Texas state flags a-wavin’ as they waited their turn to launch. I could imagine I could hear “Last one to the fishin’ hole is a dirty stinkin’ lib!”

No, “stay-at-home” is not something any Texan does well, let alone when the government is telling them to do so. Empathy and slogans such as “We are all in this together!” are not a strong suit in a state that regularly threatens succession.

The area where my family calls “home” is a Fast Food Freeway, so if you are like many Texans who don’t mind drive-thru dining, life is not that much different here in Central Texas. State parks opened up on Monday for Day Use (limit 5 per gathering.) In order to limit in-person exposure, Day Use passes must be purchased online. According to TPWD on my Twitter feed, the reserveamerica.com site crashed under the load following the opening announcement. 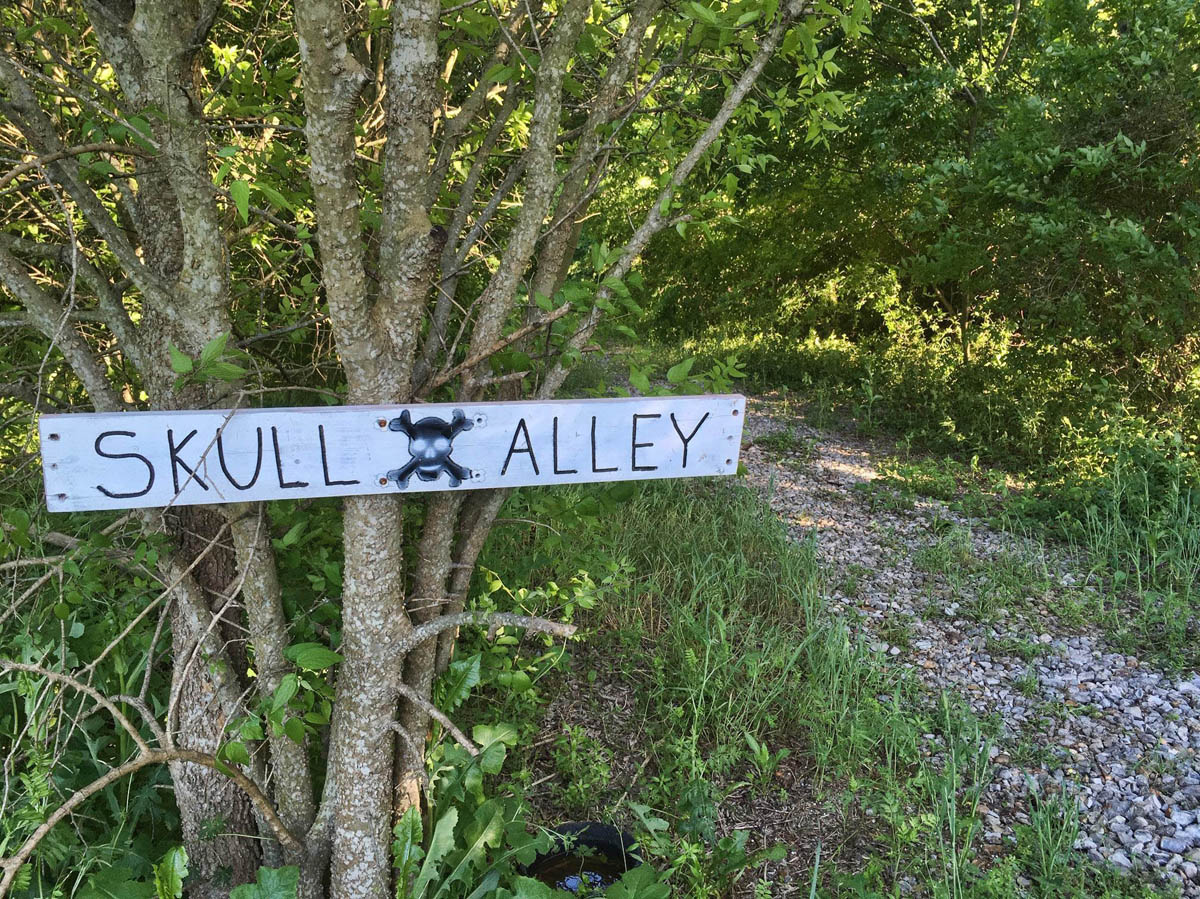 My favorite 4 mile hike/bike path nearby is my saving grace. 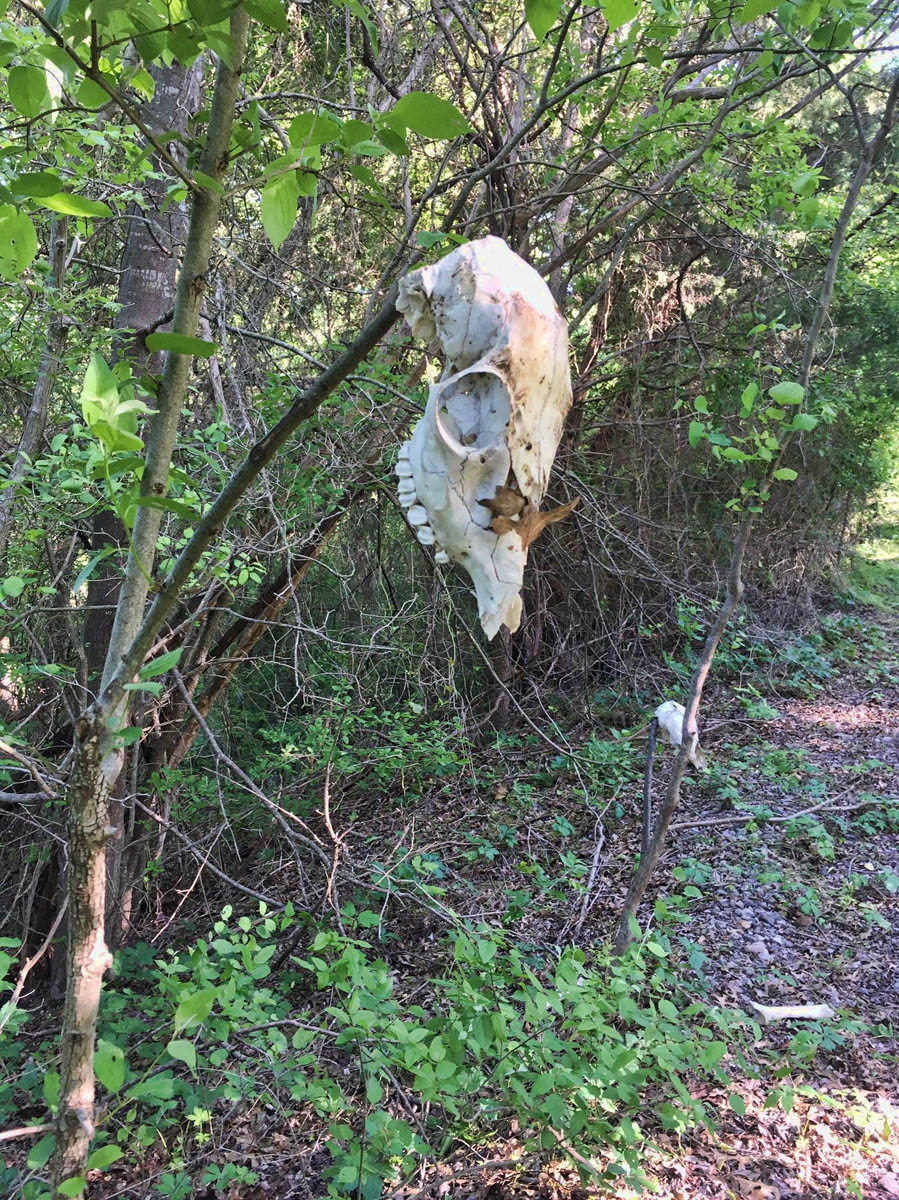 It’s a combination of paved and unpaved rail trails (the old Missouri-Kansas-Texas Railroad, which was known as MKT or the Katy,) as well as a few new winding mountain bike trails. 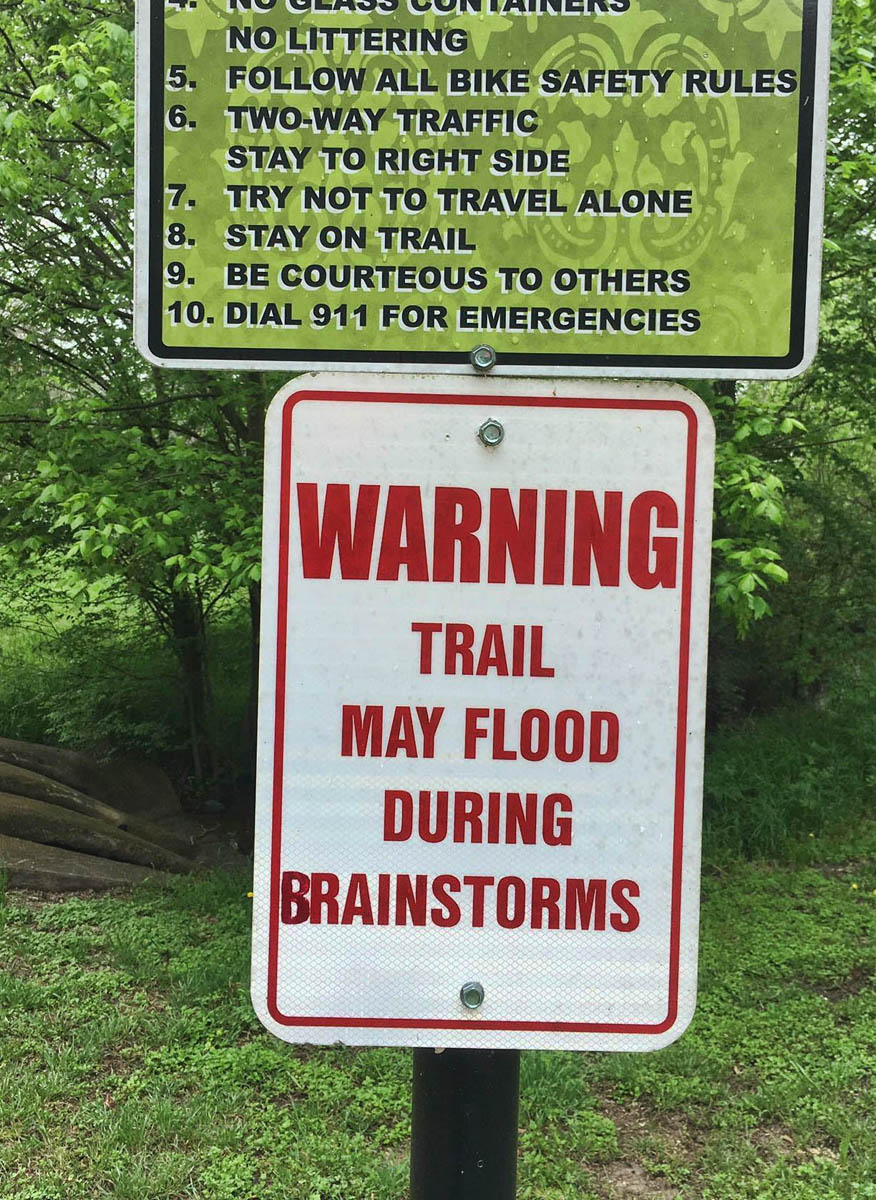 Someone took a little creative license here. Maybe too much time on their hands… 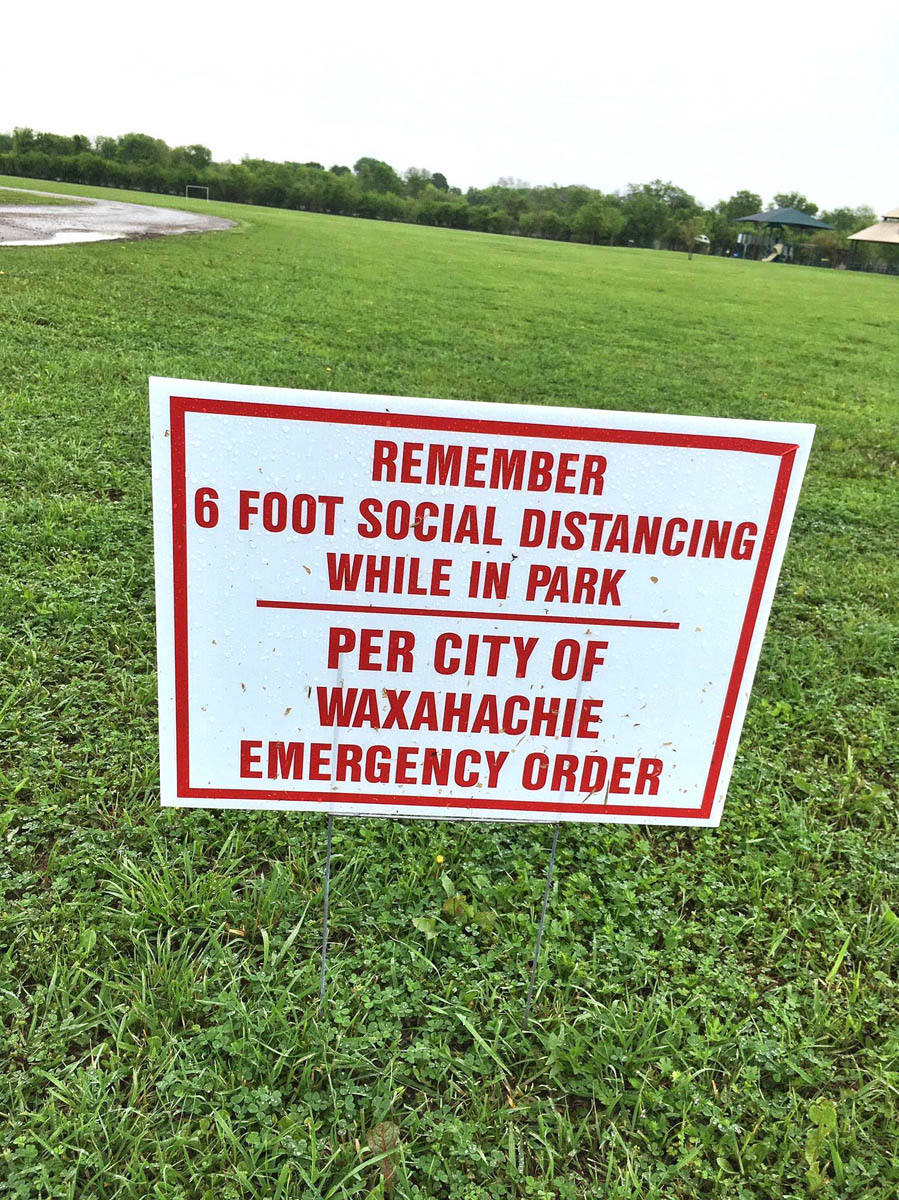 No danger of encroachment here… 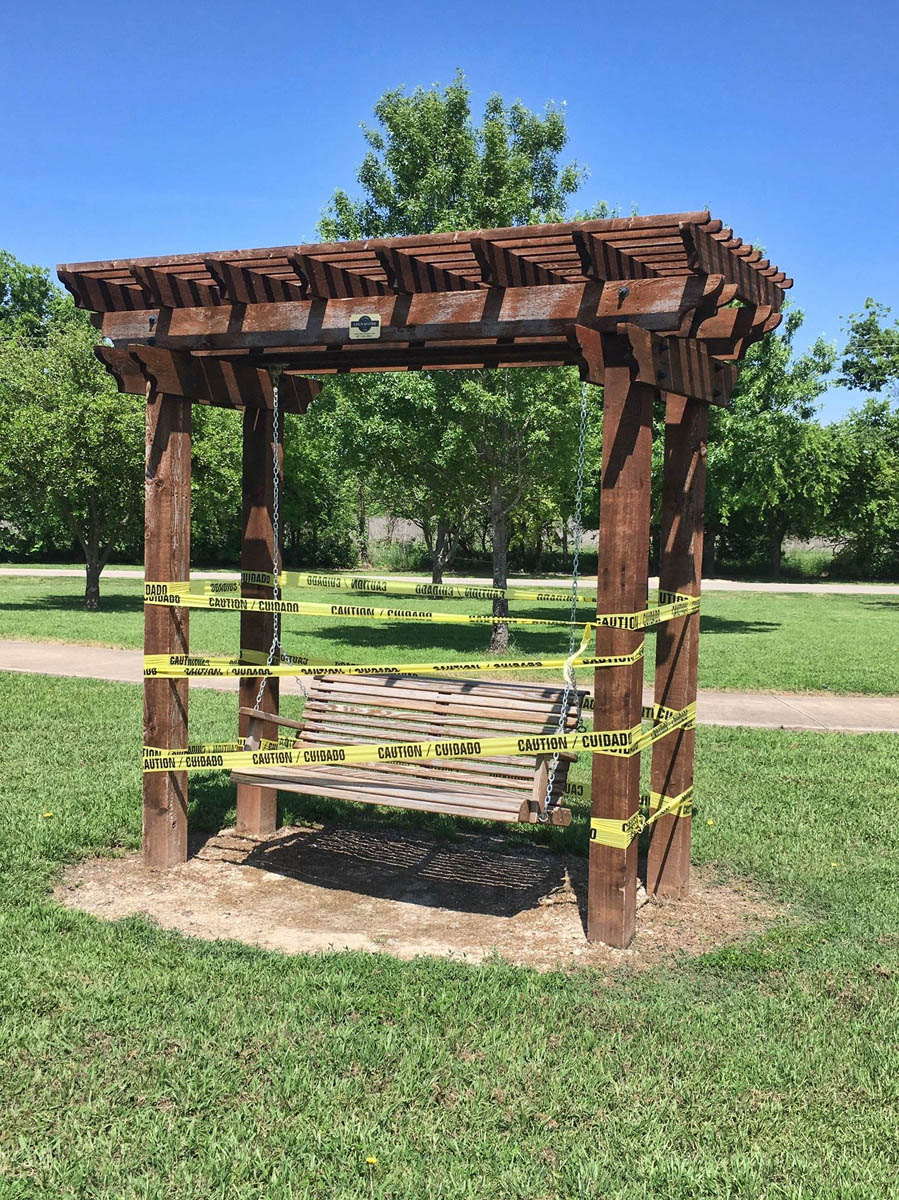 We now have idiots standing shoulder to shoulder in the streets protesting the lockdown, because “Nobody’s gonna take-a-way my freedoms!” Well, yeah, I guess one could say death is the ultimate freedom. And now the Orange A-hole in the White House is tweeting out calls for insurrection against the restrictions put in place to save lives. So the dam is breaking…faster in some areas than others. We are watching science unfold right in front of us. Fifty percent of us feel strain on our patience, (“Why should we hafta stay at home if they don’t?”) while the other 50% never gave credence to science in the first place.

I have started an excel spreadsheet based on the Texas Human Health and Services website to track the number of reported cases in Texas (currently 20,196 and climbing.) In addition to the state cases, I am also charting Dallas County and the two neighboring local counties. While the numbers are no doubt inaccurate (because I have not heard of one single testing site within a 30 mile radius) I figure it’s still a good baseline. I won’t relax my own self-imposed restrictions until the numbers start to decline, regardless of what the governor says. 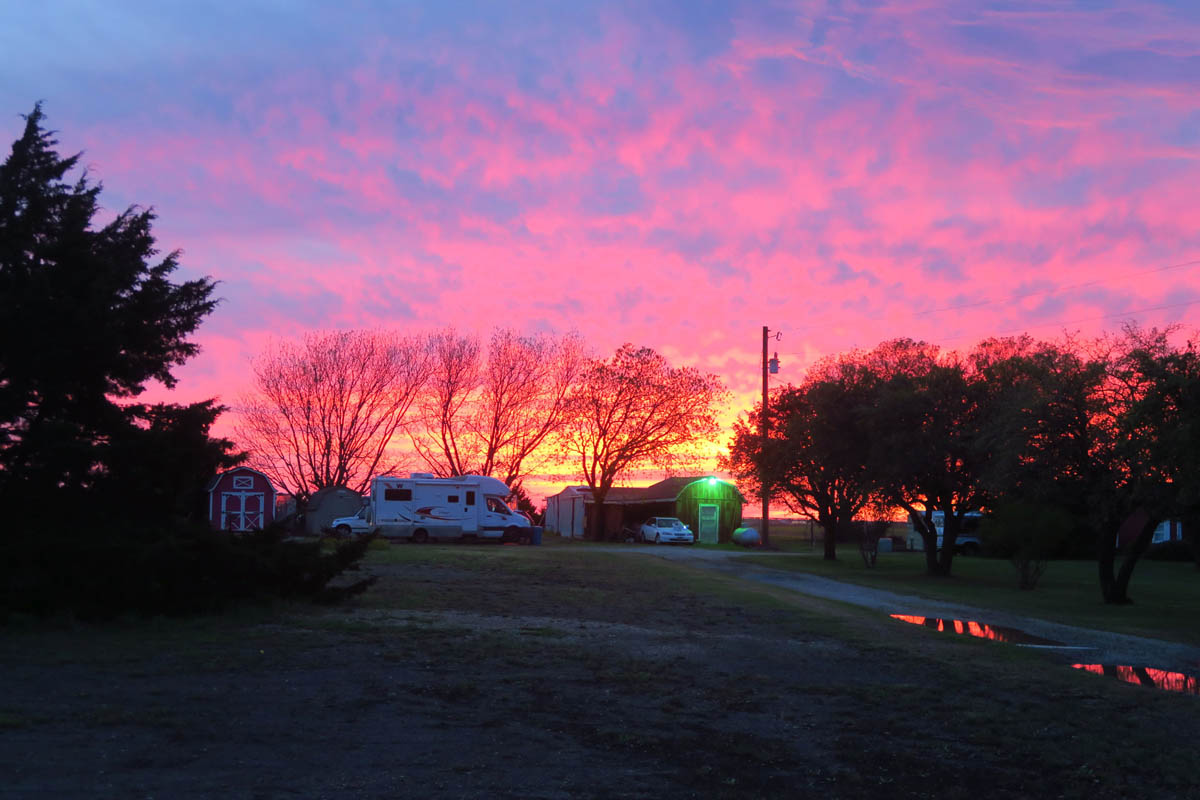 I have to hand it to the old farm…it does give up some nice sunsets. I swear, this photo was untouched. 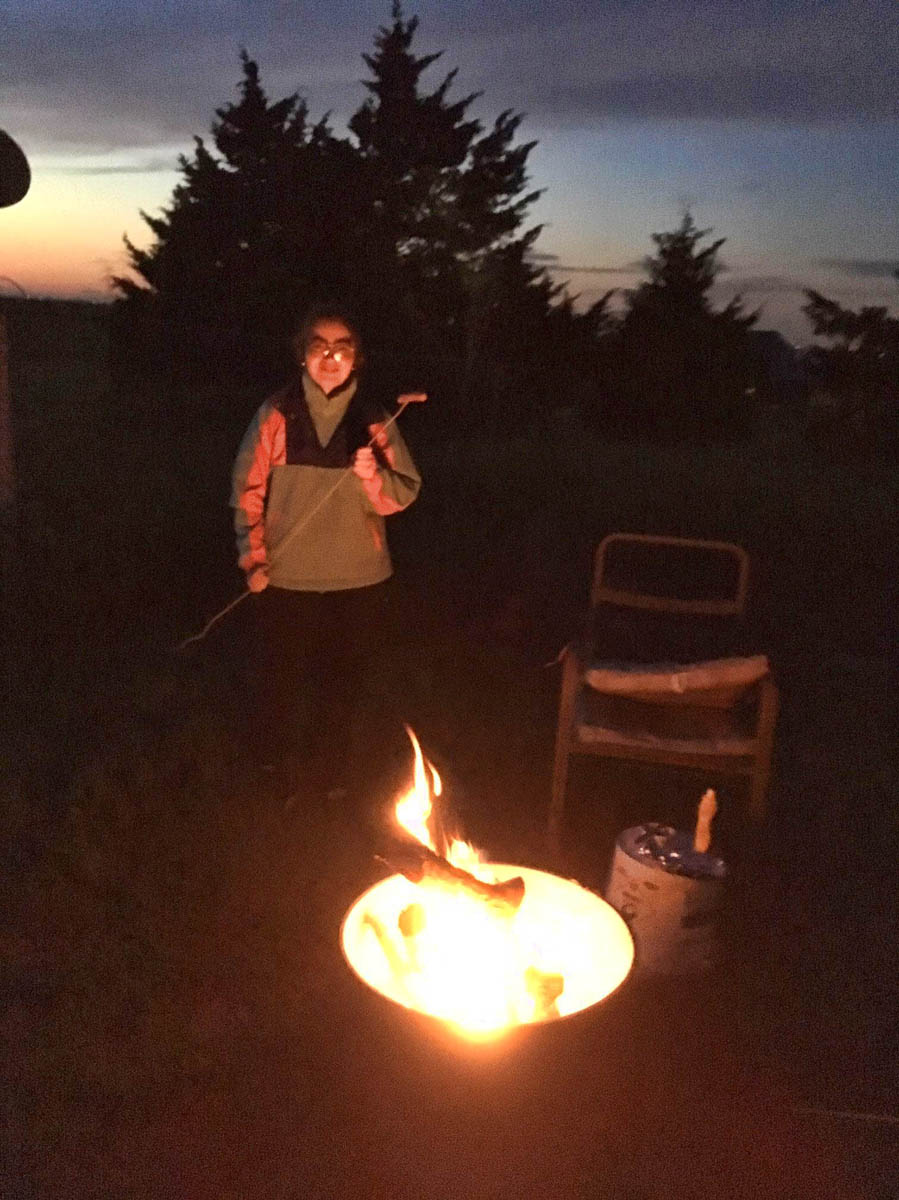 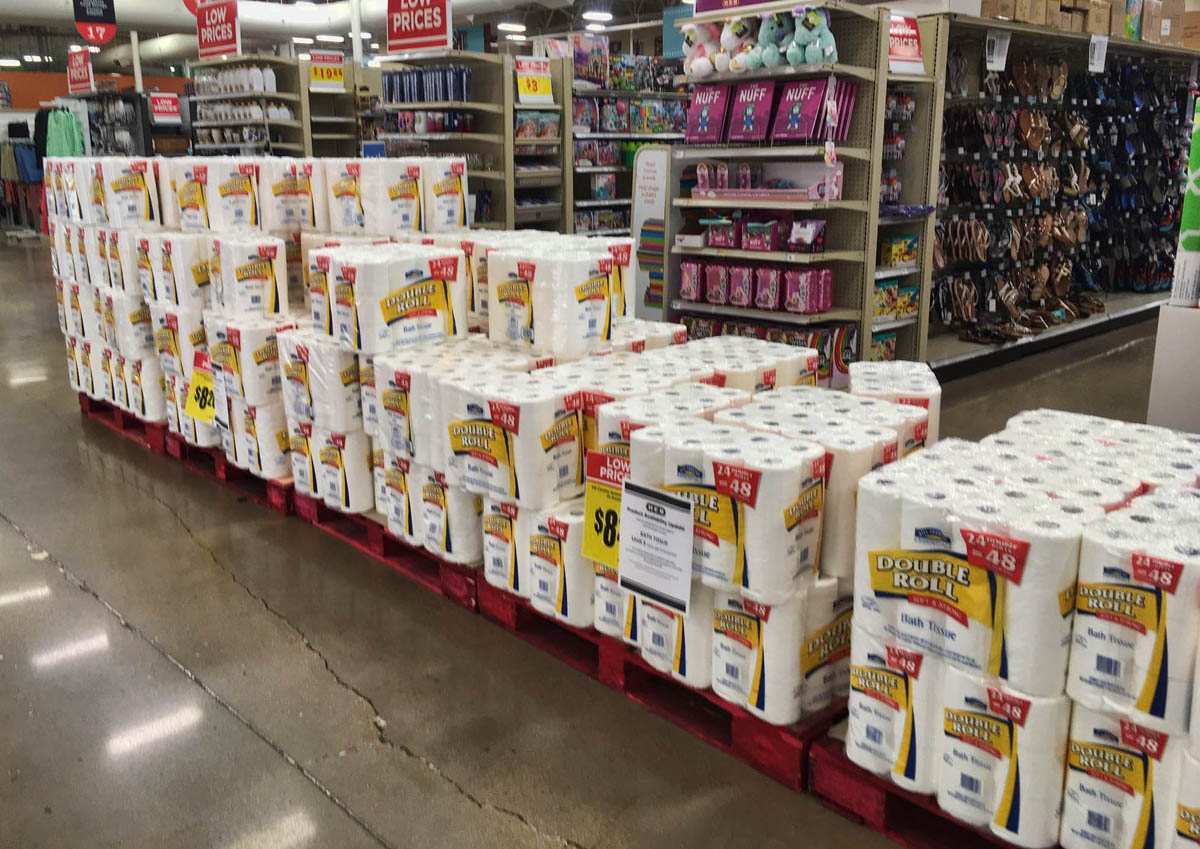 Leave it to Texas-based H.E.B. to come through in a pinch. 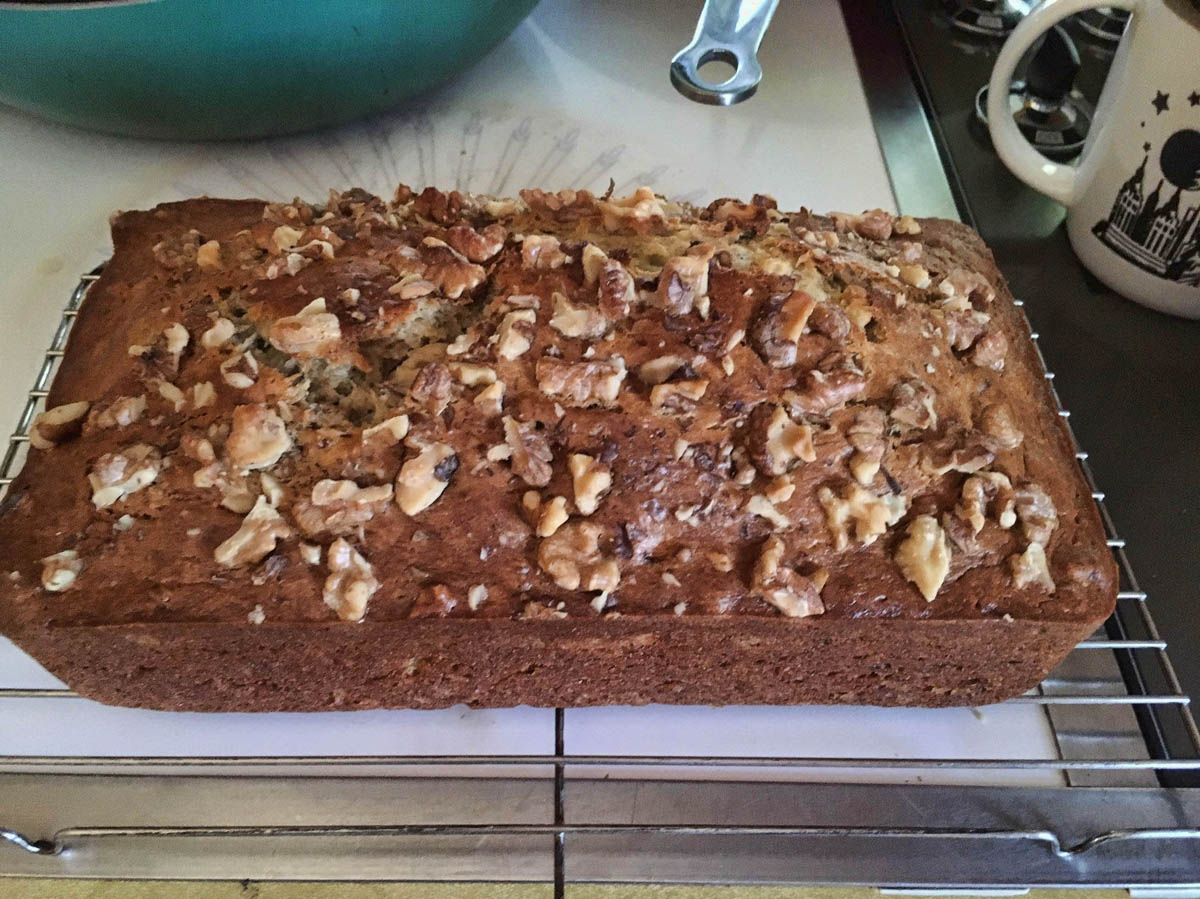 I have become a “COVID cliche'” baking homemade banana bread.

Recently, I needed to go out to forage for food. Mom hadn’t been out of the house since my brother left for Mexico just before the COVID wildfire began to rage. So I asked her to come along for the ride. We would do some “drive thru dining” at the local BBQ restaurant, and take the long way home in hopes of seeing some drive-by bluebonnets. I loaded up the car with 2 kinds of hand sanitizer, a can of Lysol spray, a roll of paper towels, rubber gloves from my RV, and two homemade masks made from bandanas and hair ties.  I had also found two remaining “N95-rated” work masks my brother left behind, still in a box wrapped in plastic as a “break only in case of emergency.”

While it felt so good to be behind the wheel again after two weeks, seeing the verdant green hills and valleys of the local farms roll by our window, I also felt like I was doing something ”wrong.” On one hand, it was a feeling of sheer delight, like a couple of free birds fleeing a cage door accidentally left open. On the other hand, we felt like jailbirds, checking the rear view mirrors, hoping to cover some distance before someone discovered we had escaped. There have been so many mixed messages throughout this whole thing, particularly for us who follow the news from multiple parts of the country, seeing as how “home is where you park it” and all. 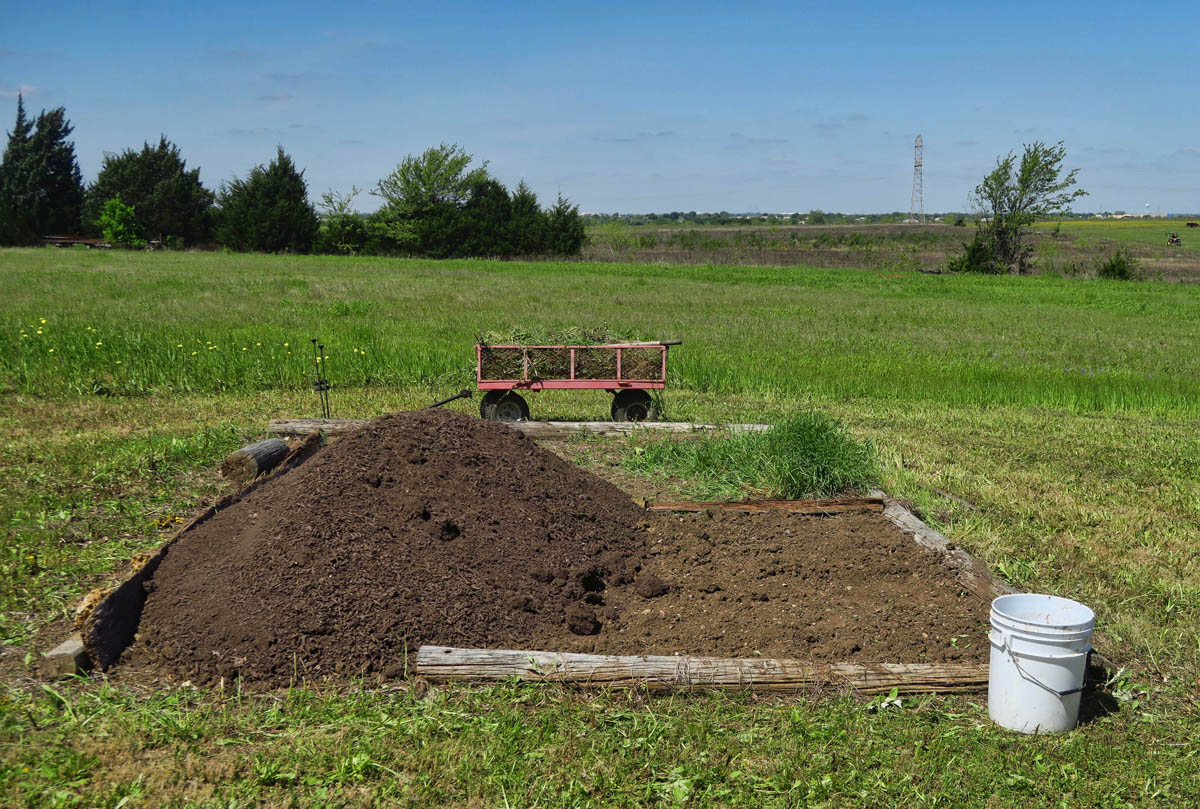 Mom and I decided to make good use of our stay-at-home order and resurrect the garden, overgrown in years past. 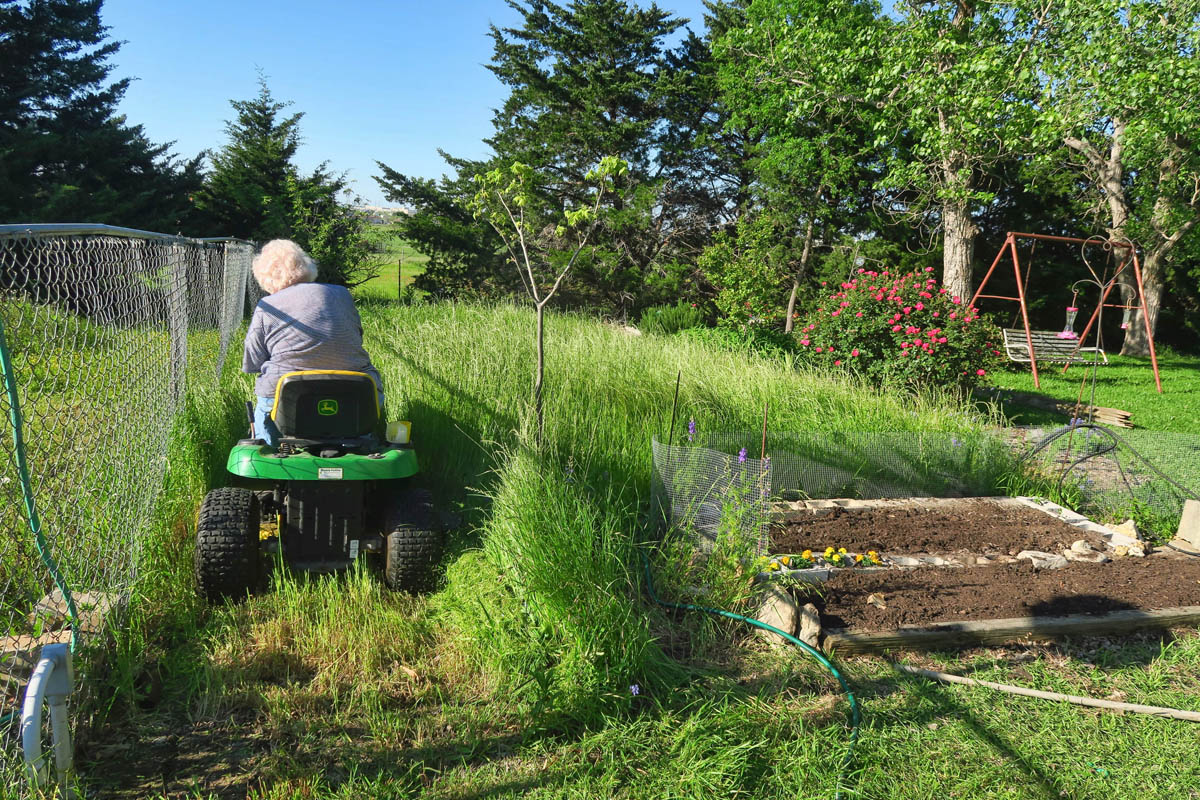 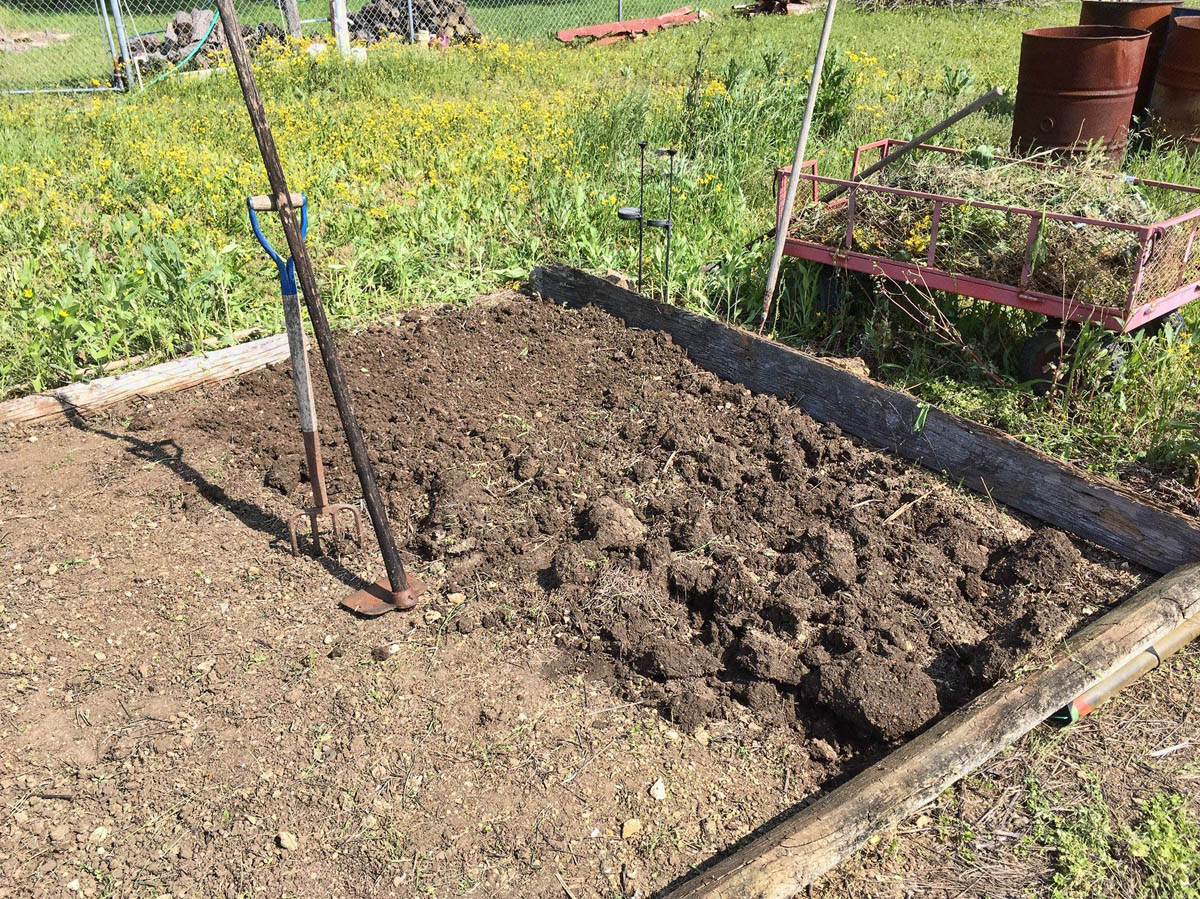 We don’t have access to a tiller, so the ground work is done by sweat equity. (In other words, my local gym is closed.) 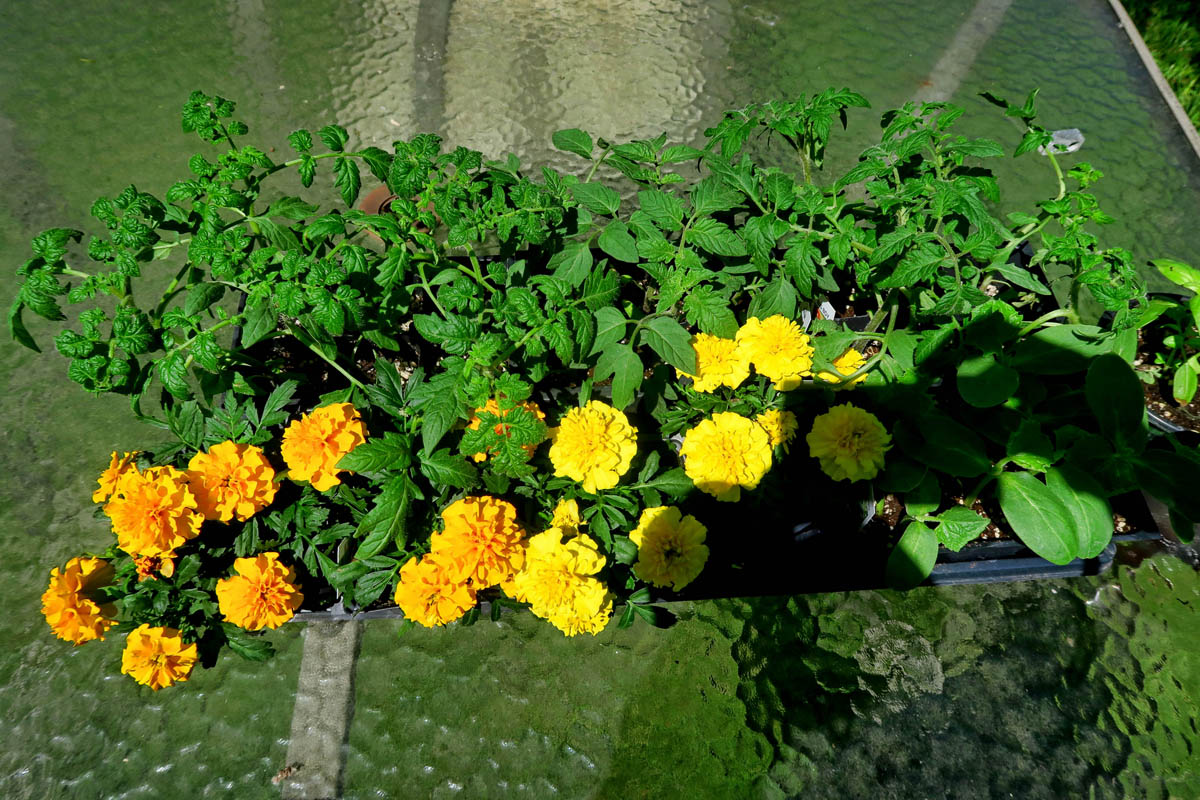 We planted 18 tomato plants of 3 different varieties. Mom says to plant marigolds near your tomato plants, as it helps stave off insects. 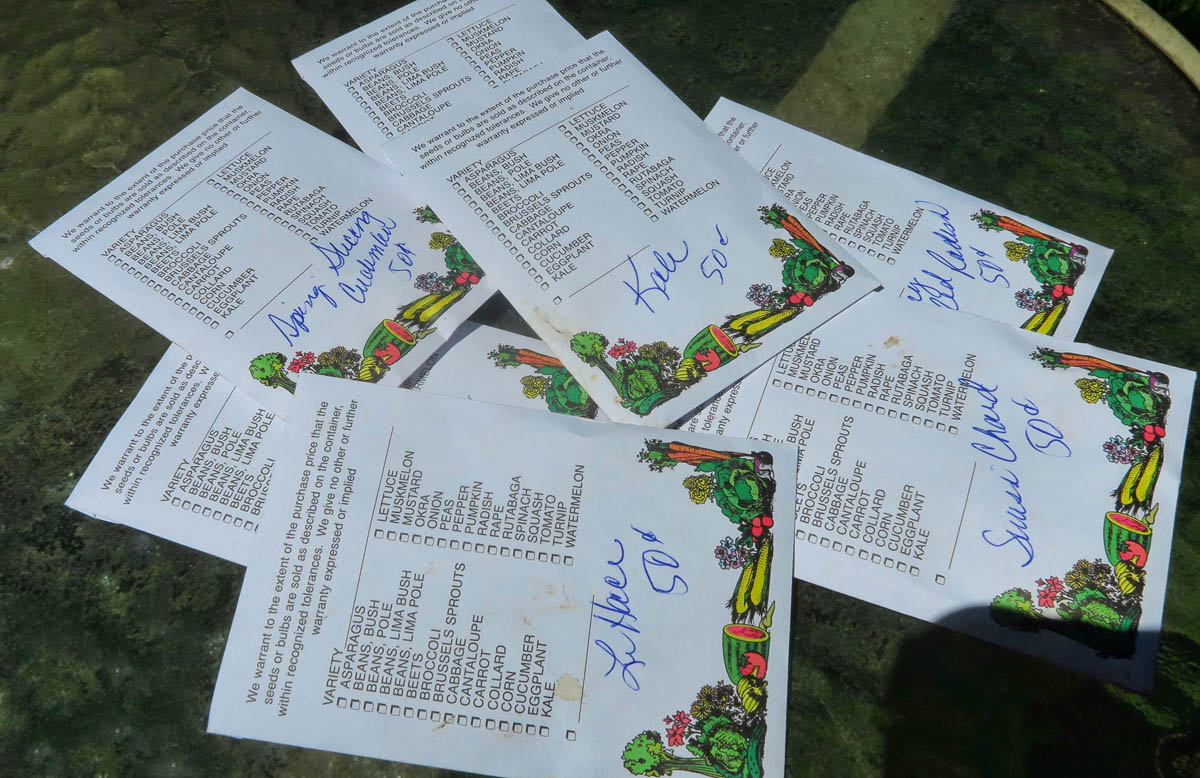 In addition to tomatoes, we have planted a mix of seeds and seedlings: lettuce, kale, spinach, collards, swiss chard, onions, radishes, cucumbers, squash, and cantaloupe. 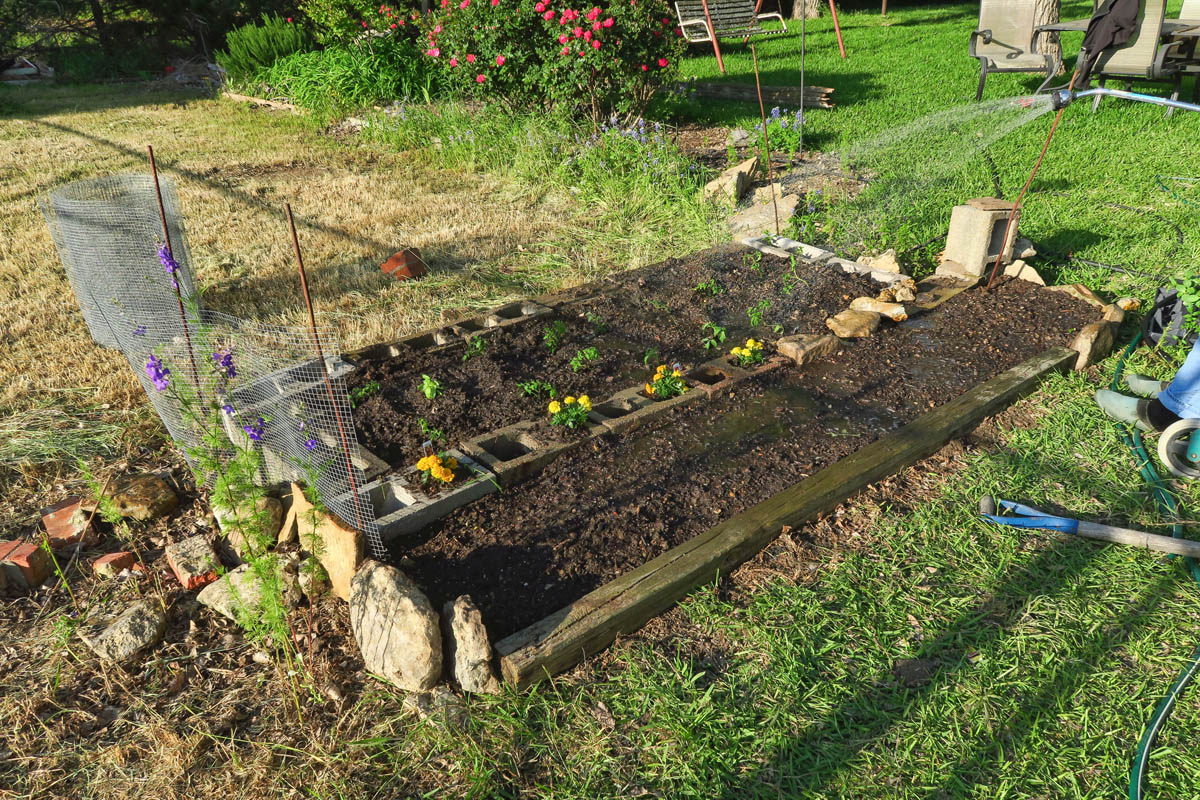 This is the smaller of the raised beds. It contains tomato plants, with lettuce and radishes soon to make their appearance, hopefully!

The bluebonnets were uncharacteristically scarce this season. While there were a few fields, most of the usual spots lay bare. The Annual Bluebonnet Festival was cancelled this year, and the Welcome Center where maps are typically distributed is boarded up. Blue and white decorative directional signs pointing to the most prolific fields are noticeably absent. And those rolling blue hills now look like a freshly mowed lawn. Maybe they were mowed early this year since the festival was cancelled. While there were still a few rows along the roadside, most of the undulating waves of blue were just not there this year.

Maybe we were too early, or a little too late to see the typically vast proliferation. Or maybe they never came up at all this year. But it seemed like a fitting metaphor for 2020.

My favorite philosopher and poet, Ralph Waldo Emerson once said, “The Earth laughs in flowers.” Who could blame Mother Nature if she has lost a bit of her sense of humor this year… 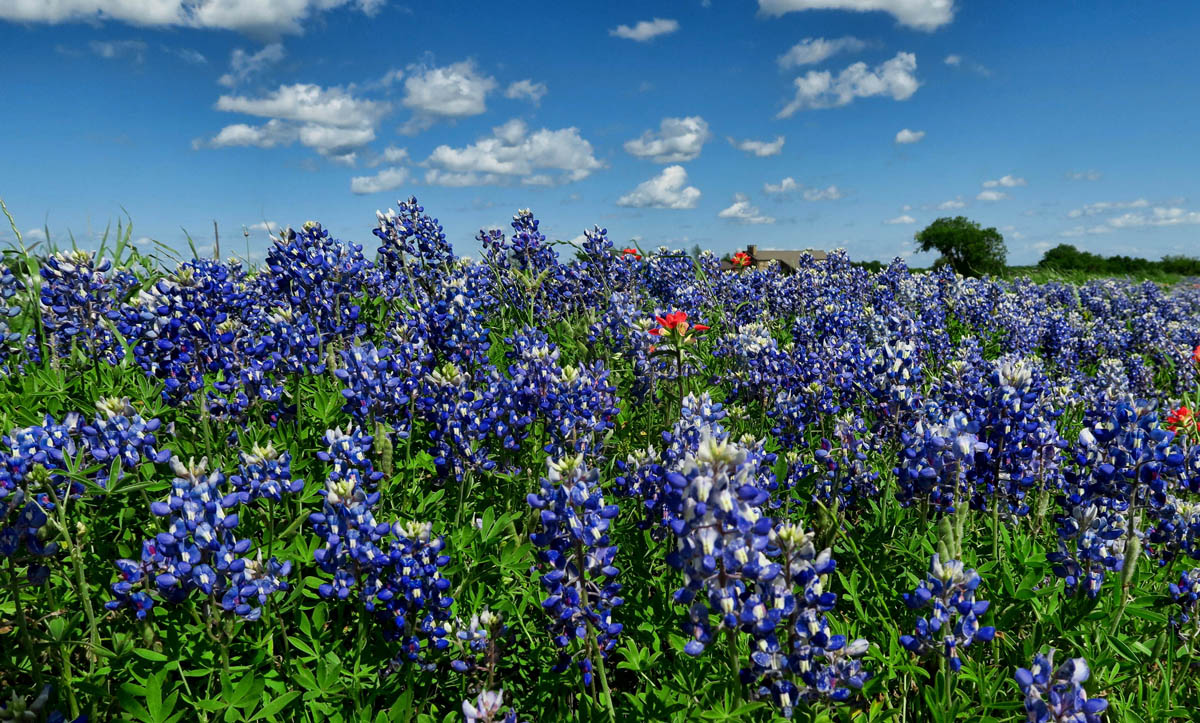 21 thoughts on “Free Birds or Jailbirds?”