After 7 glorious days of near-perfect weather, I left the Bisti Badlands sooner than I would have liked. There was a cold front on the way, and temps were predicted to drop below freezing. The Winnie was not winterized, and since this appeared to be a fast moving front with temps returning to the 70’s on the back end, I didn’t want to go to the trouble and inconvenience of emptying the tanks and blowing out the lines for just a couple of days. So I decided to move on into Albuquerque sooner than planned, securing a space with hookups. This would also put me in better position for my RV repair appointment.

For a town the size of Albuquerque, they are woefully short on campground options if you need to be close to town outside of Balloon Fiesta time. This is especially true during the pandemic when all but private RV parks are closed to visitors with out-of-state plates. KOAs at sixty bucks a night are never an option for me.  The El Rancho RV and Mobile Home Park had reviews from multiple sources citing violence and theft.  That left the Enchanted Trails, a Passport America park as my best option. It’s a nice enough park with exceptionally lovely staff.  But being located out in an industrial area, its only nearby conveniences are CampingWorld, Freightliner, and Loves Truckstop.  I had expected more in-town options from New Mexico’s largest city.

By the time I arrived at Enchanted Trails, the weather forecast was beginning to deteriorate. Not only were freezing temperatures predicted, but they were now saying up to four inches of snow. I raced to the Walmart and bought two electric heaters (redundancy!) a couple of bottles of RV antifreeze, and a work light to put in the plumbing bay. 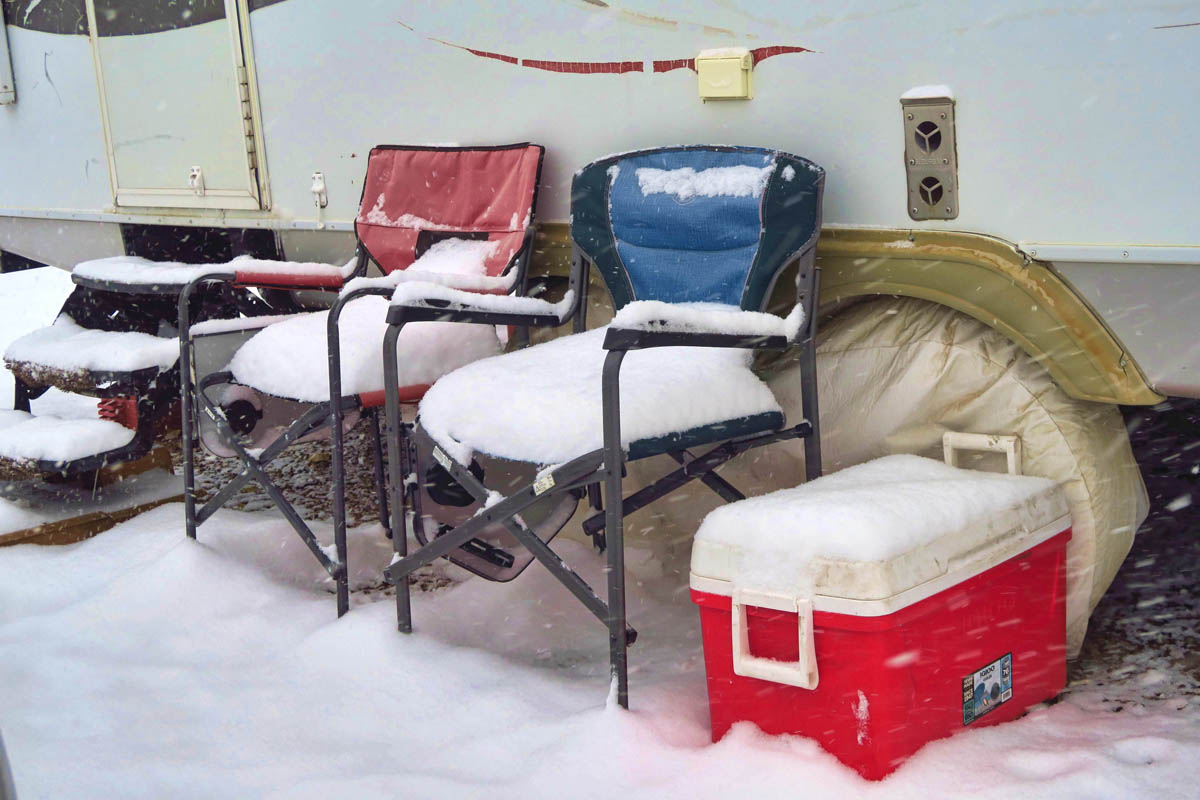 Watching the accumulation on my neighbor’s lawn chairs. 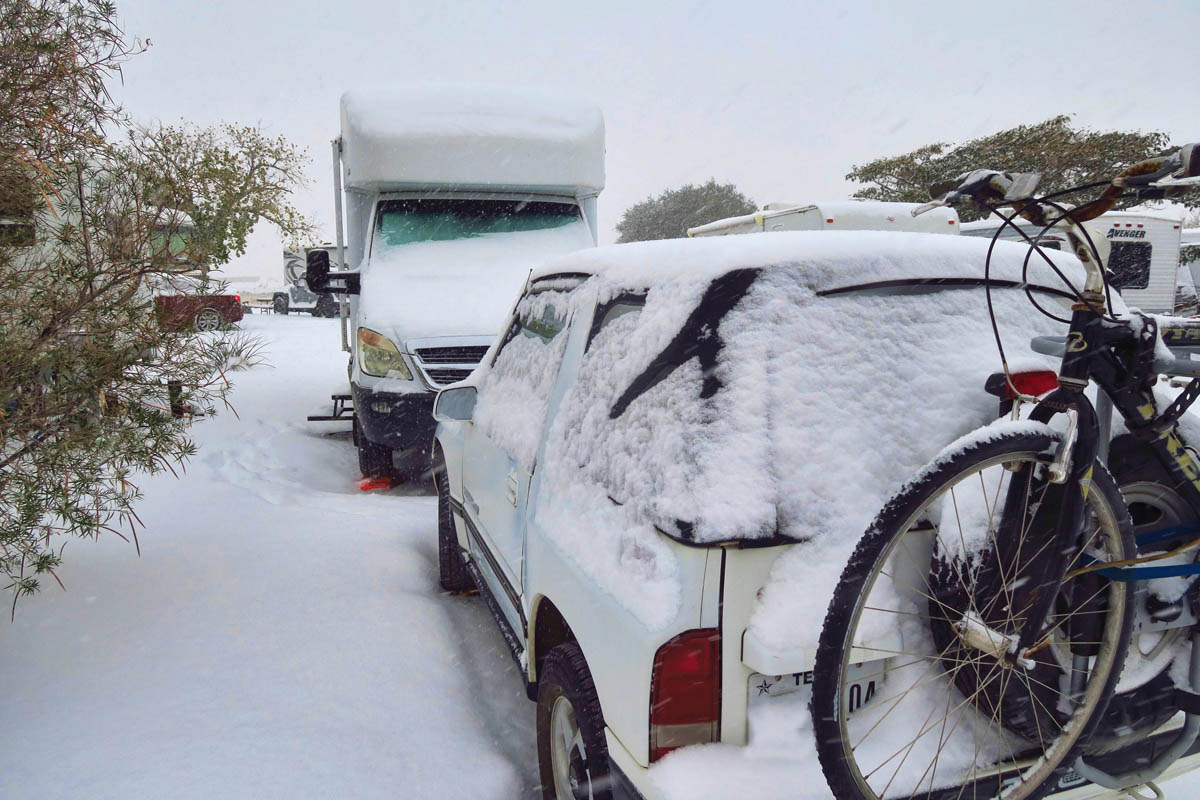 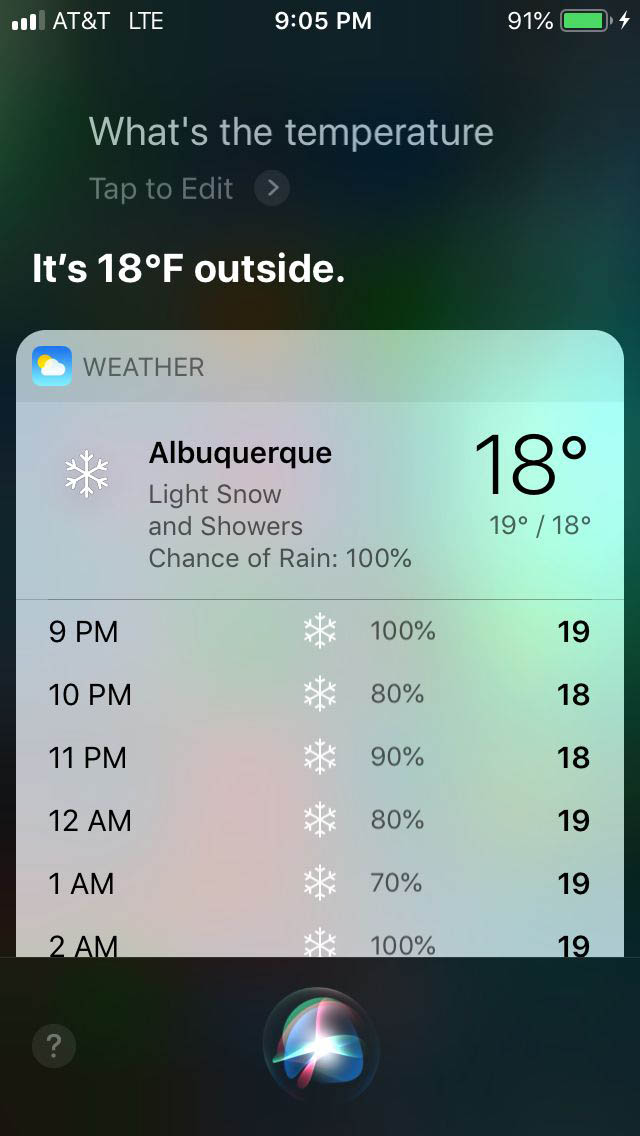 The Winnie has never endured temps this low without having been winterized. Keep in mind this was the third week of October! 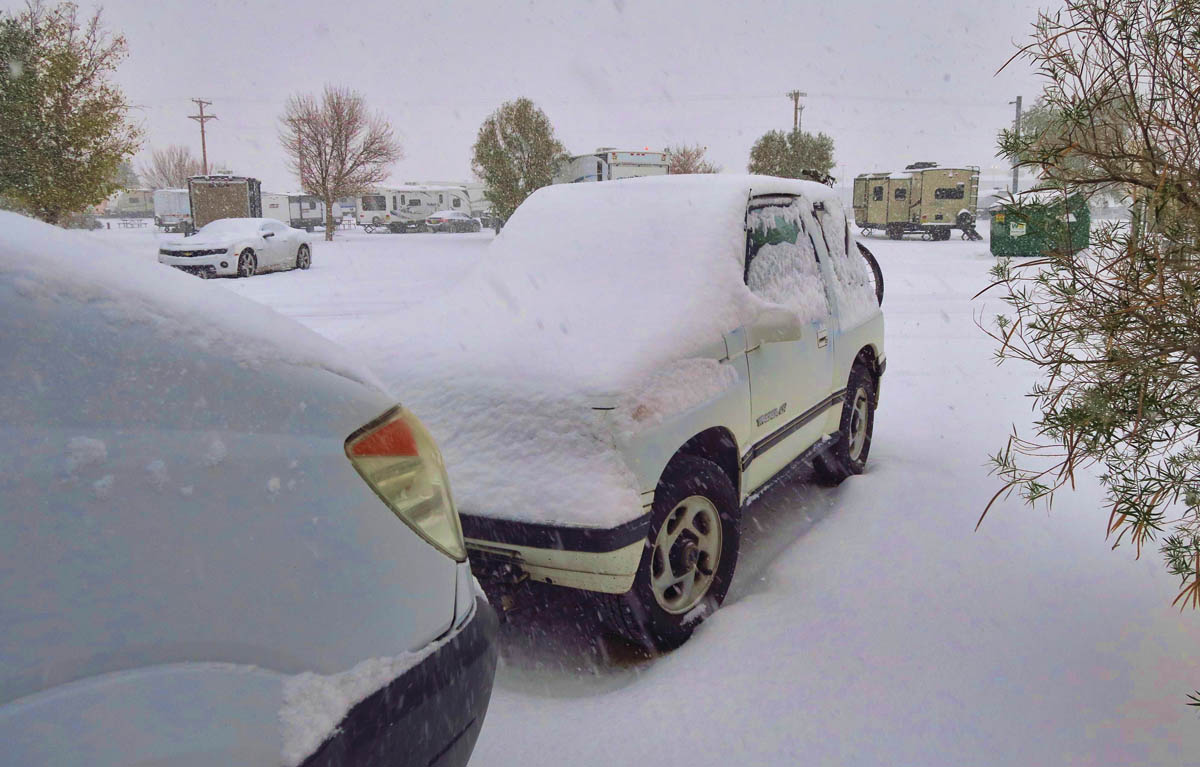 So beautiful, yet so risky for my water-filled pipes. 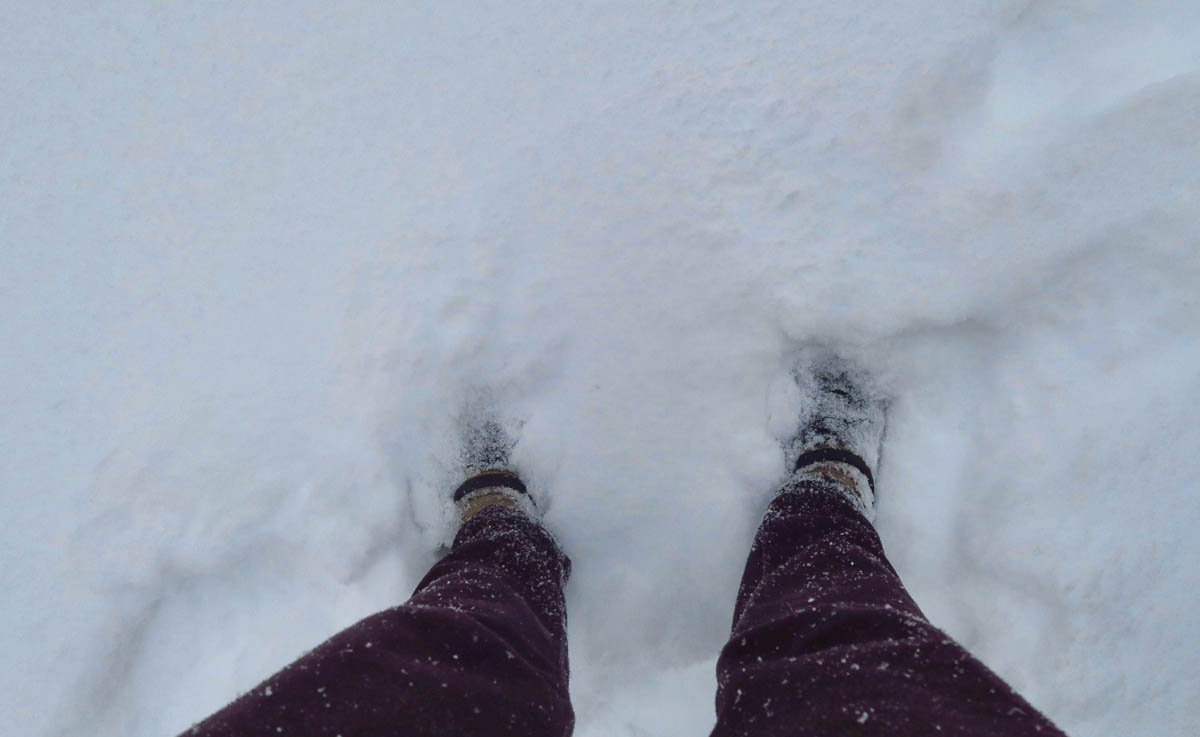 Still, I don’t see snow that often these days, so I had to get out and play… 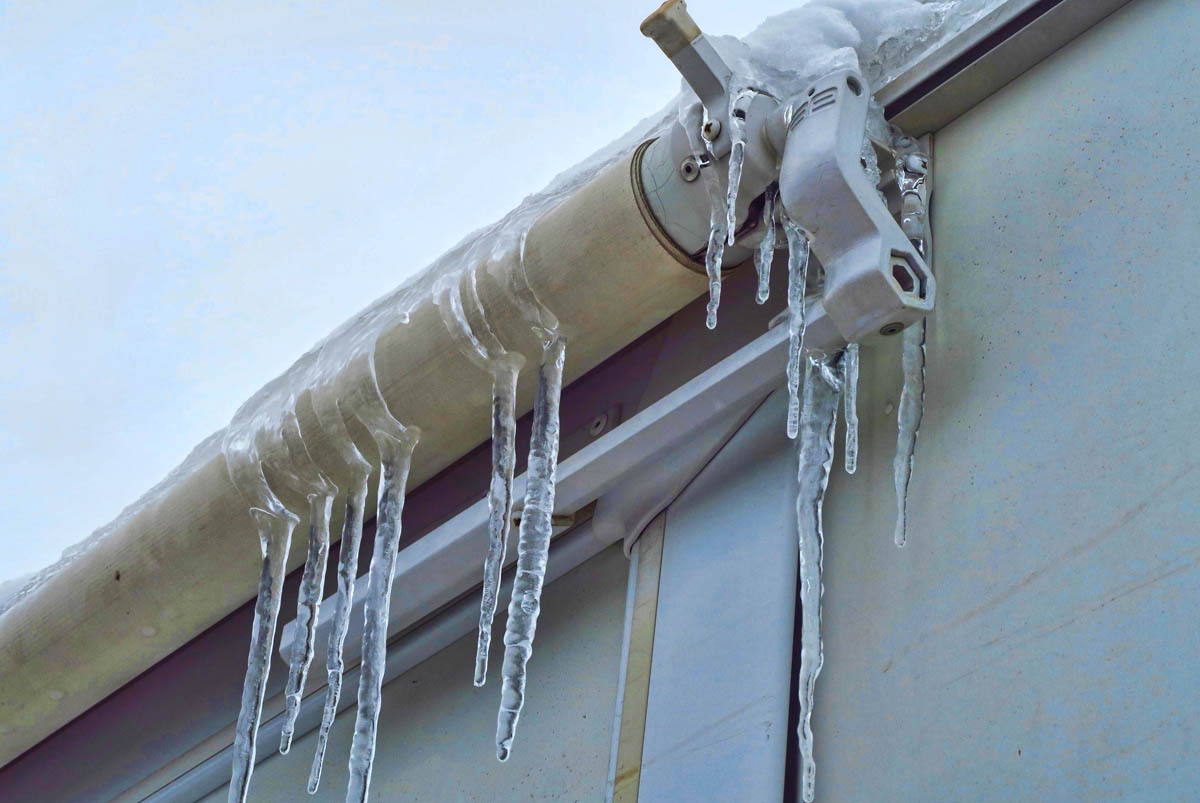 As the day progressed, the original forecast of 27°F was revised down to 18°F. And the four inches of snow was revised up to 8” to 10” accumulation over two days, not one. I was not yet winterized. Keep in mind the blog is always behind…it wasn’t even Halloween yet! By the time I started to panic, it was too late to try and get further south. I called the front office to ask if I should extend my reservation. Laurie, the kind woman at Enchanted Trails said “No one is leaving, and I recommend you don’t either!” They were really helpful in allowing us all to extend our stay.

I put the hanging curtain up to section off the cab, and lined the gap above and below with blankets and pillows. I hung my sleeping bag over the door to keep out the biting wind. Then poured antifreeze down all the P-traps, and opened up those cabinet doors with plumbing beneath them. The cheap electric heater I bought at Walmart was no match for 18 degrees, but I supplemented with the Mr. Buddy heater during the waking hours (never use it sleeping, and always vent a window to prevent CO poisoning.) And finally, there’s no better way to warm up the Winnie than with a steaming hot pot of homemade chicken & dumplings! 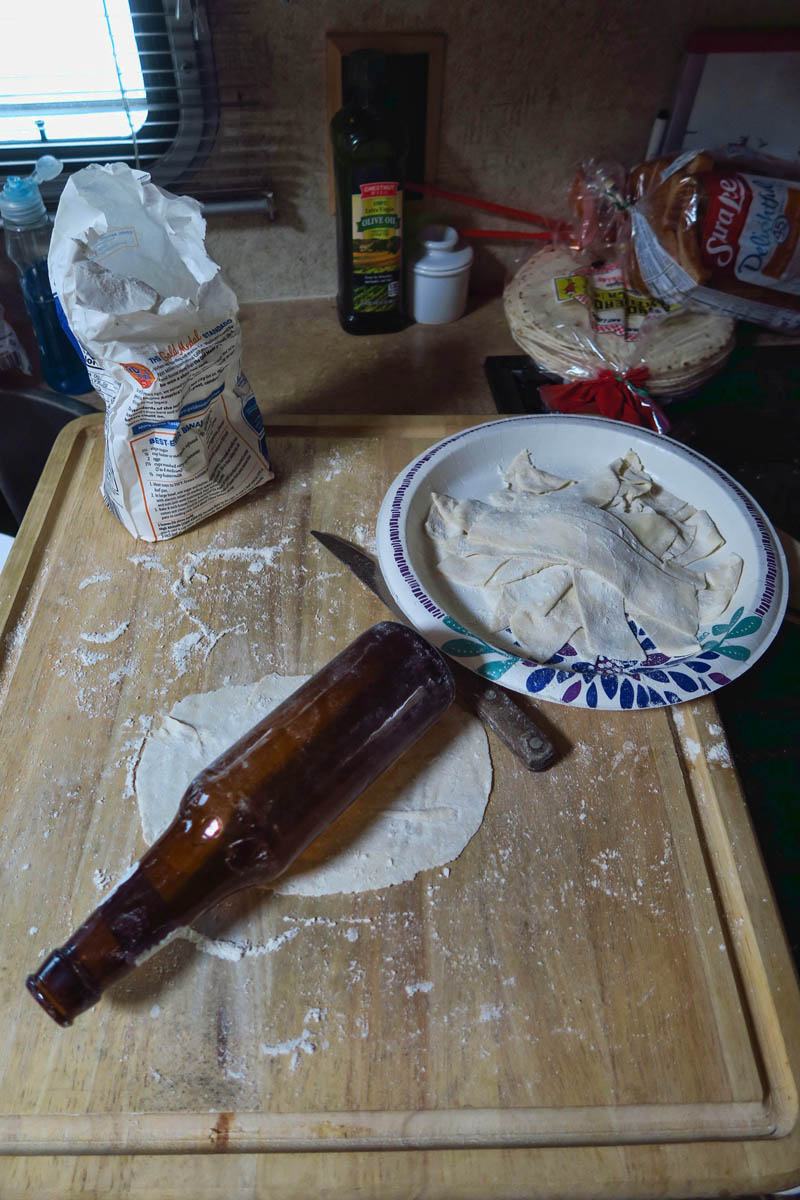 Making the family cold-weather favorite, chicken and dumplings. Only I don’t have a dough roller, so I had to improvise. 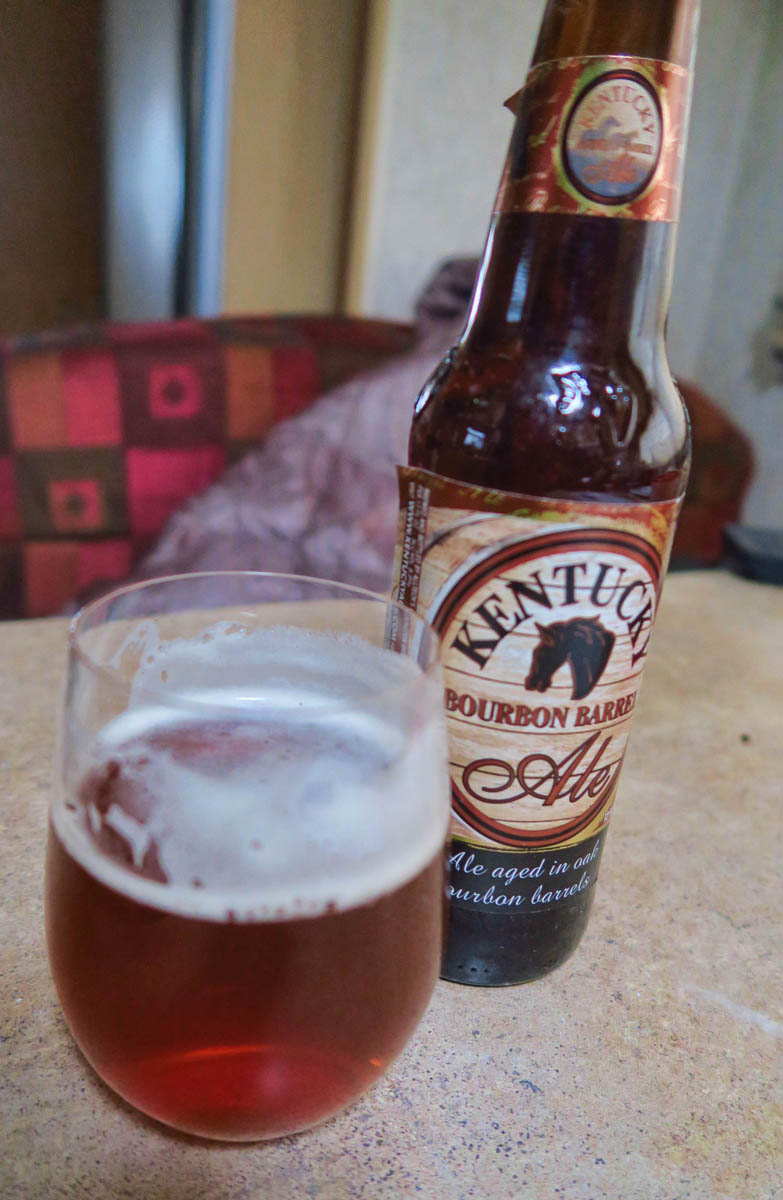 But before I could use the bottle as a dough-roller, I had to empty the contents first. 😉 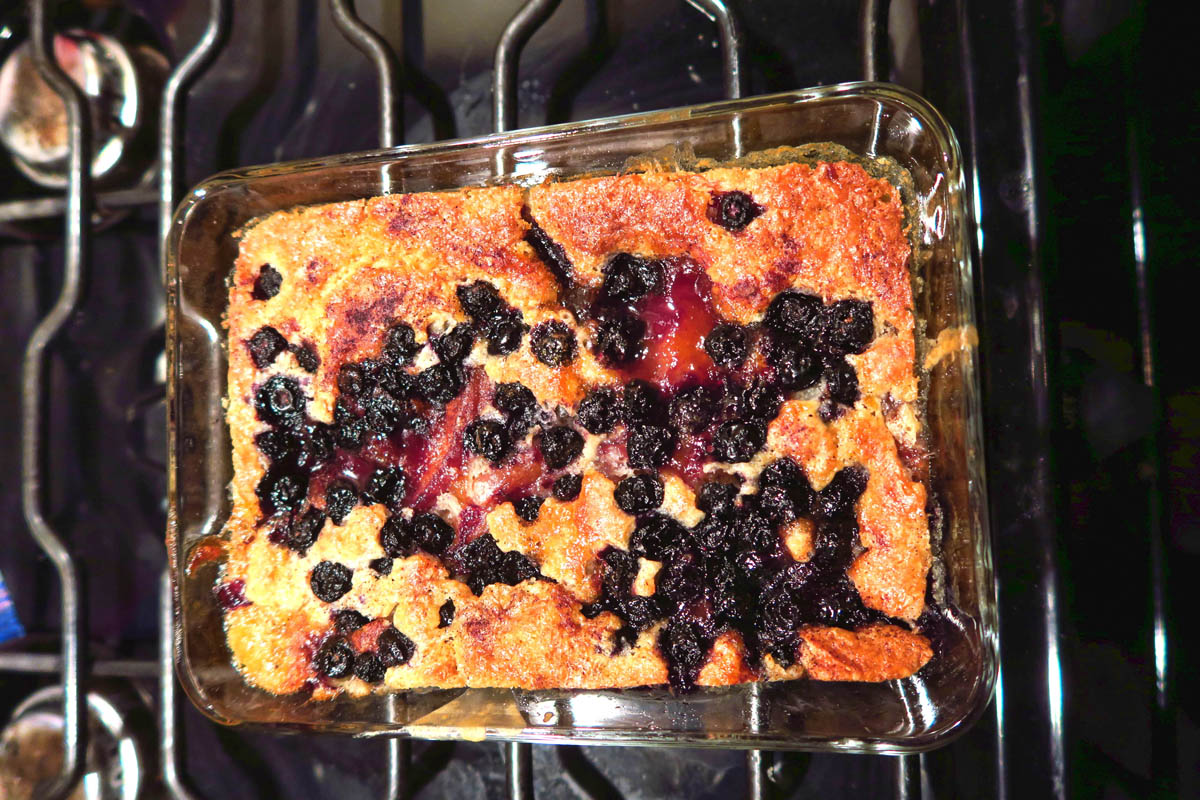 Okay, so I could claim I needed to get rid of the freezer-burned Palisades peaches in the freezer, but the peach and blueberry cobbler was really a symptom of cabin fever! 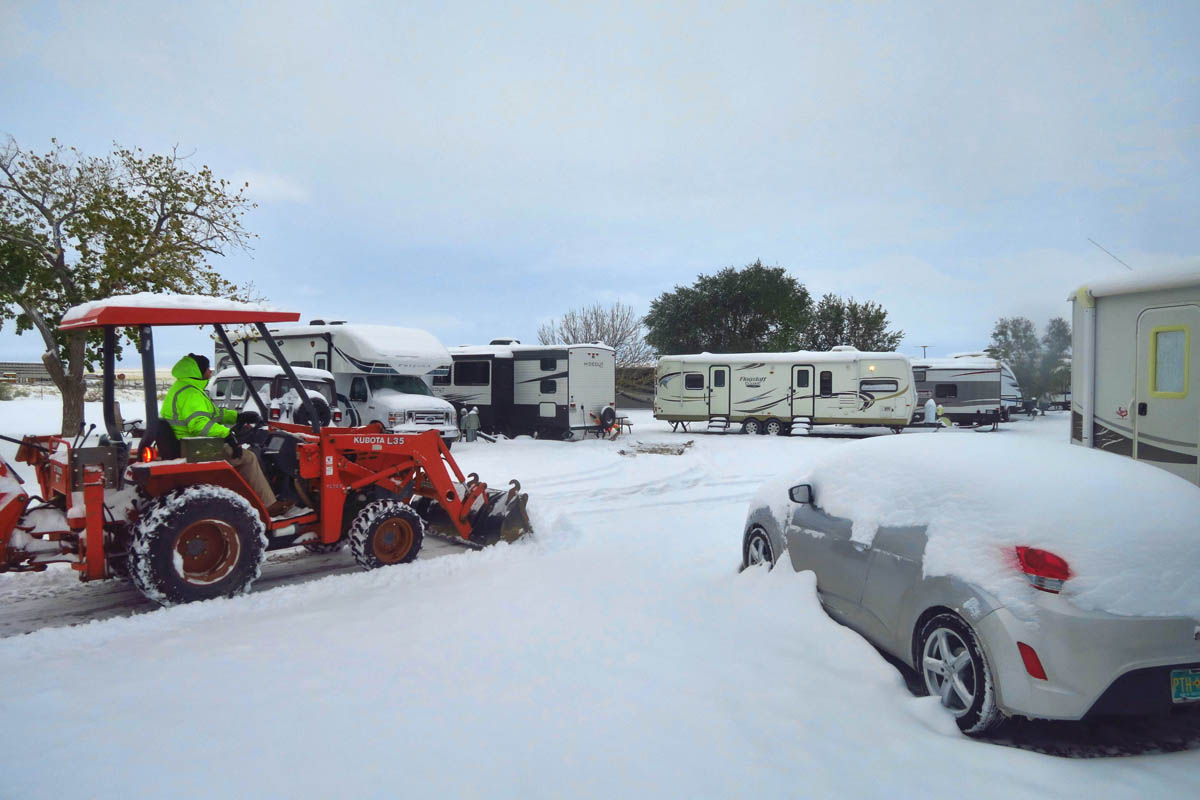 The next morning, the snow plow showed up. 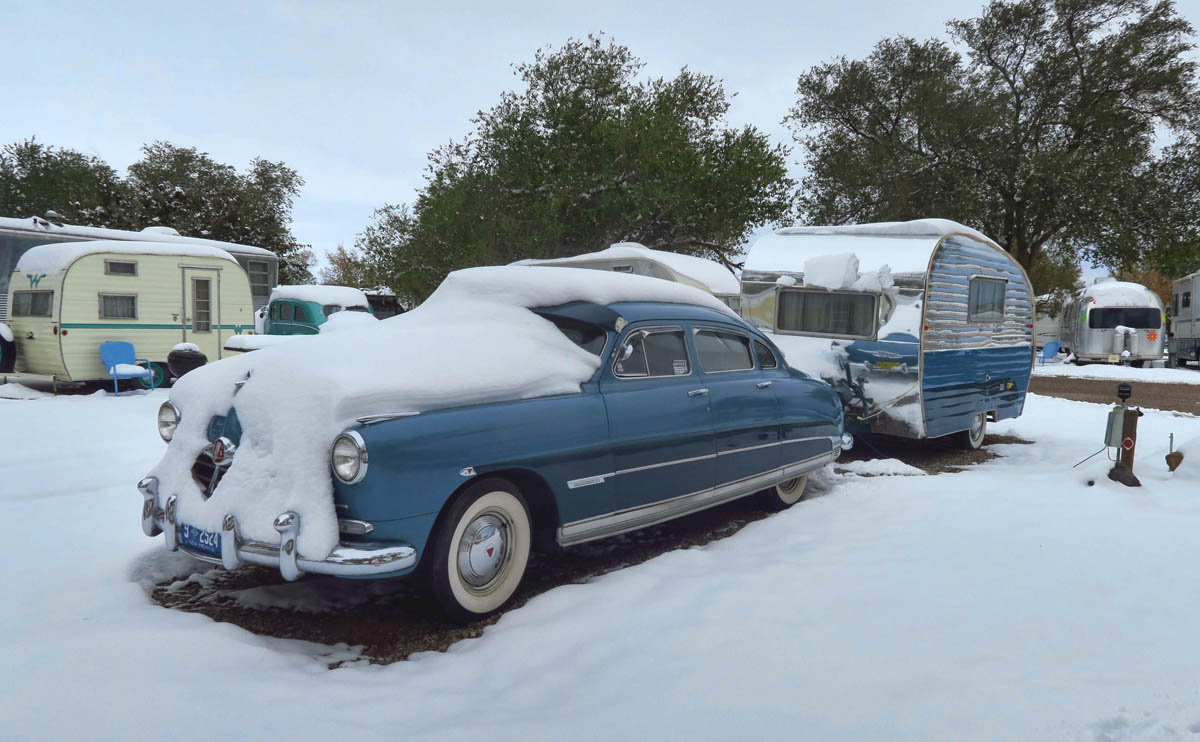 Enchanted Trails is located on Historic Route 66, and they have some really fun “period pieces.” 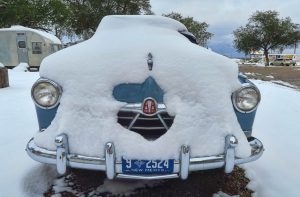 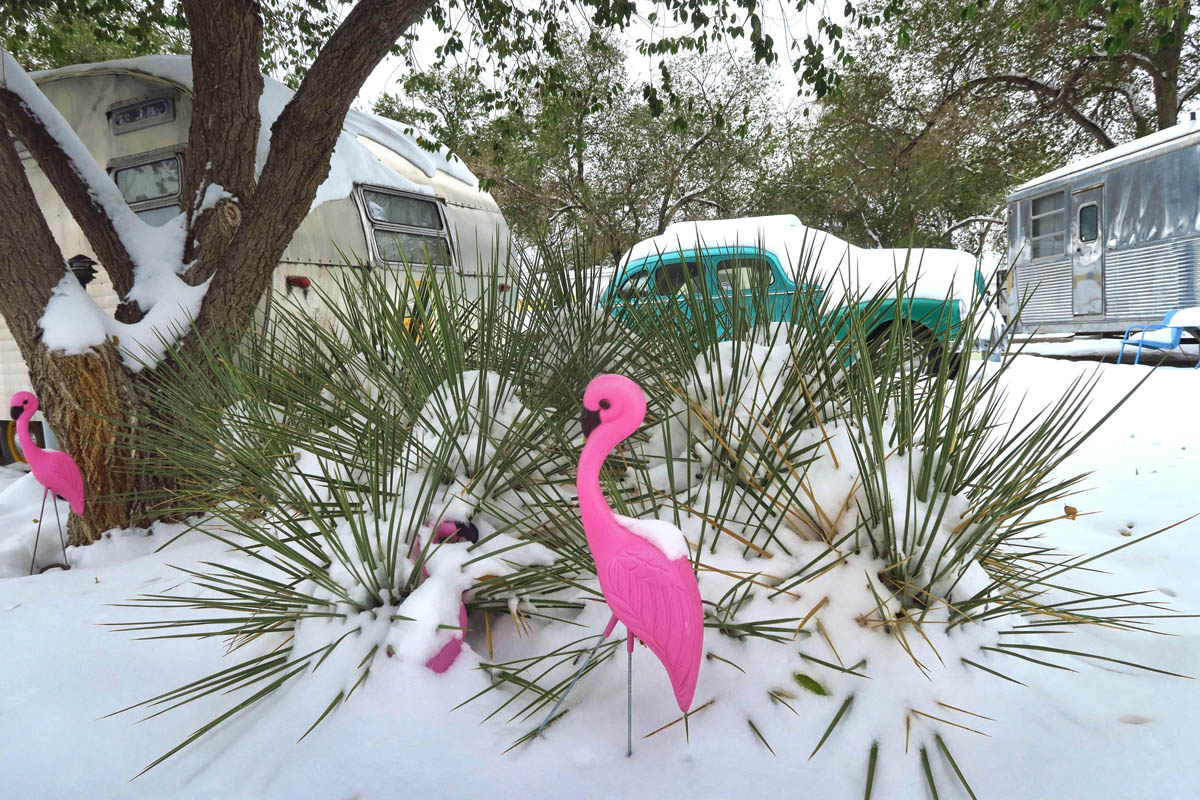 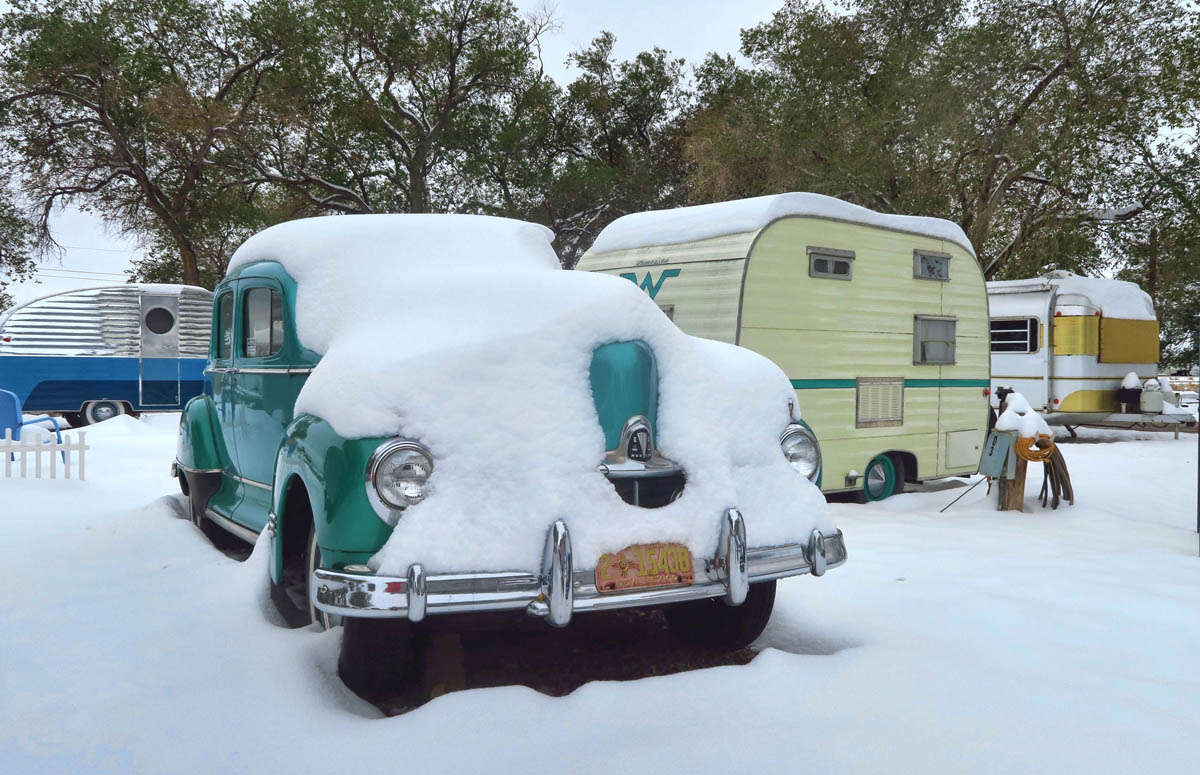 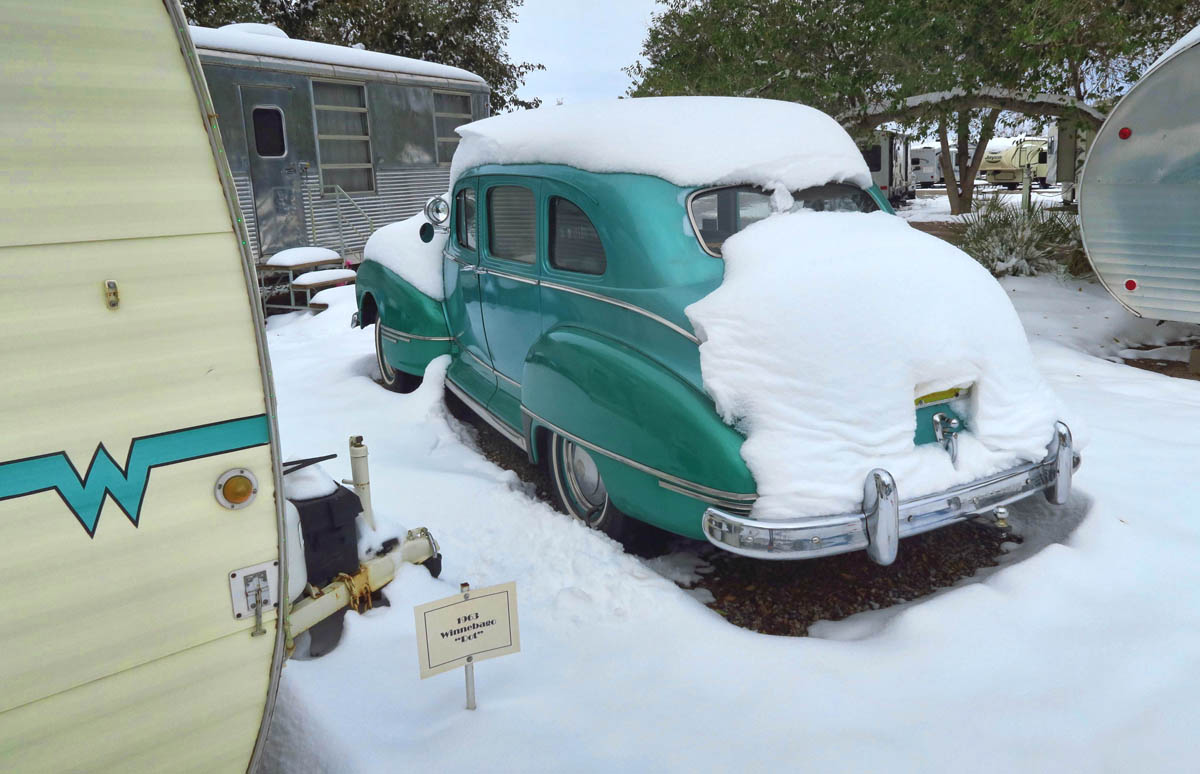 It would be 10 days before I got out of Albuquerque. My original appointment on 28th October was completed a week later, on the 3rd of November. How much of the delay was due to weather versus inefficiency is a matter of opinion. I was pushed out from Tuesday to Wednesday due to the snow. Pushed from Wednesday to Friday waiting on a part. Pushed from Friday to Tuesday because they didn’t start trying to install the new part until 3pm Friday afternoon, and they close at 4pm. (It was my choice to skip Monday, as I had to get the hell out of there!) Once Tuesday rolled around, it was about an hour job before I was finally sprung free. 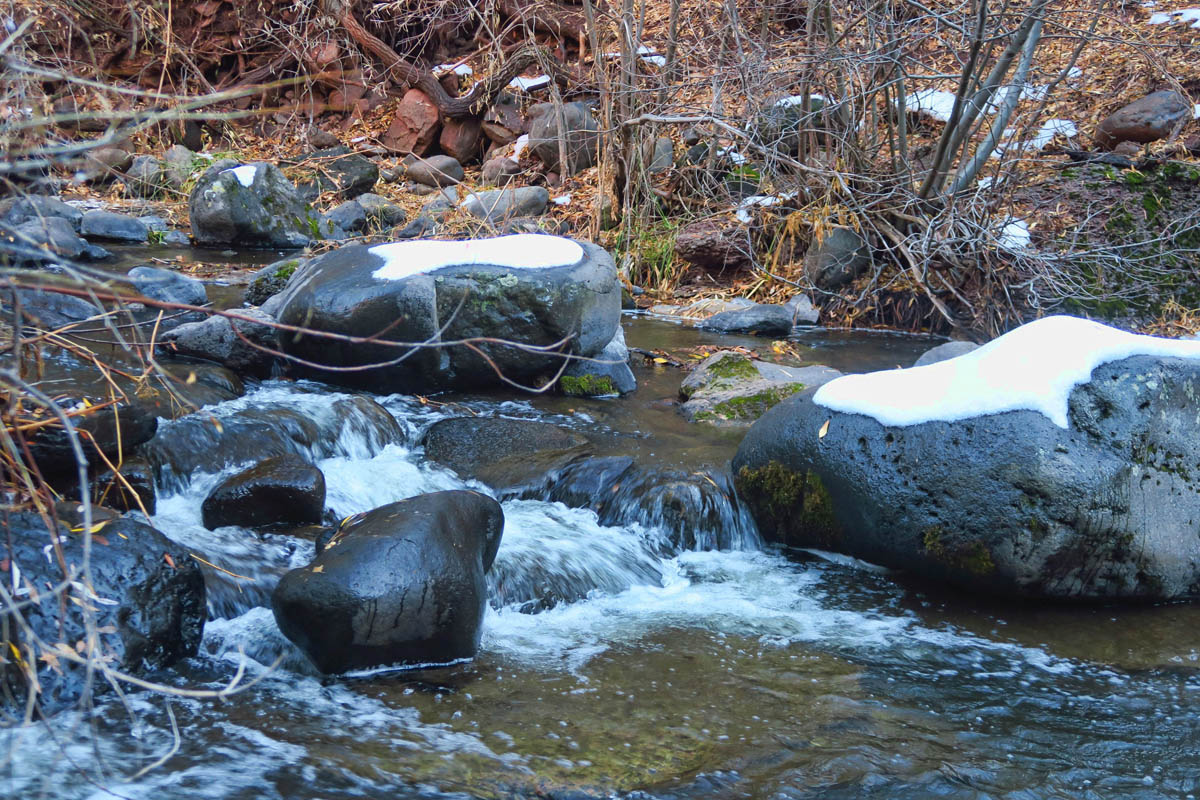 With my repair spanning over the weekend, I was faced with the decision of where to go… 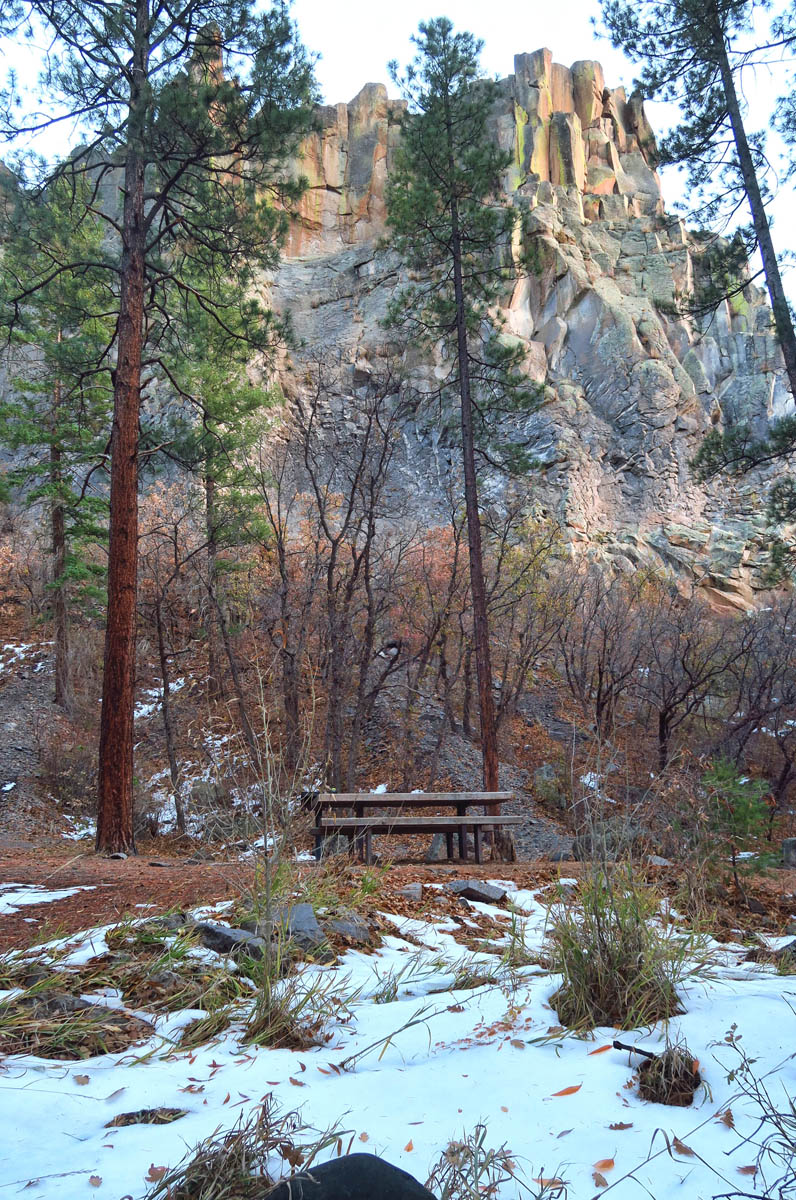 I was given the option to remain on the lot, but I would have to stay inside the Winnie so as not to set off the security alarm. So no, not an option. 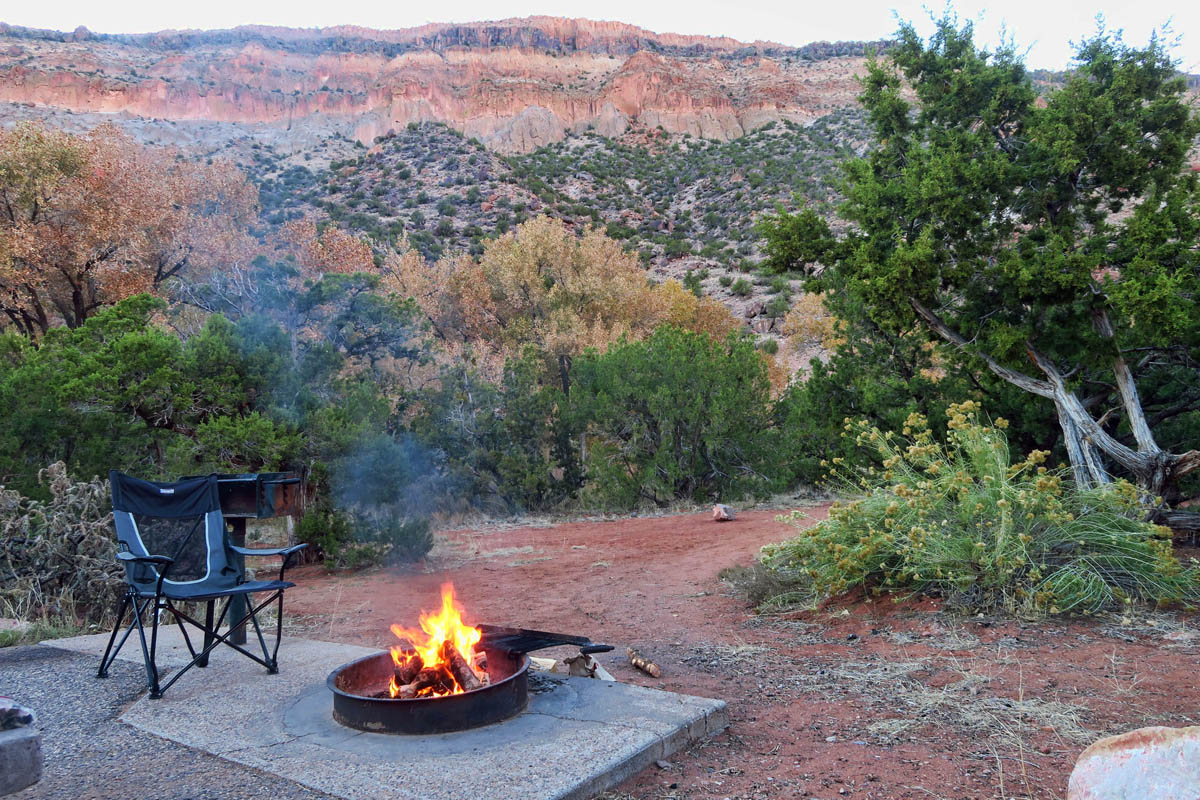 The thought of returning to Enchanted Trails felt like defeat. So with the roads now clear, I drove the 55 miles north to Jemez Springs, a place I had enjoyed back in 2018. 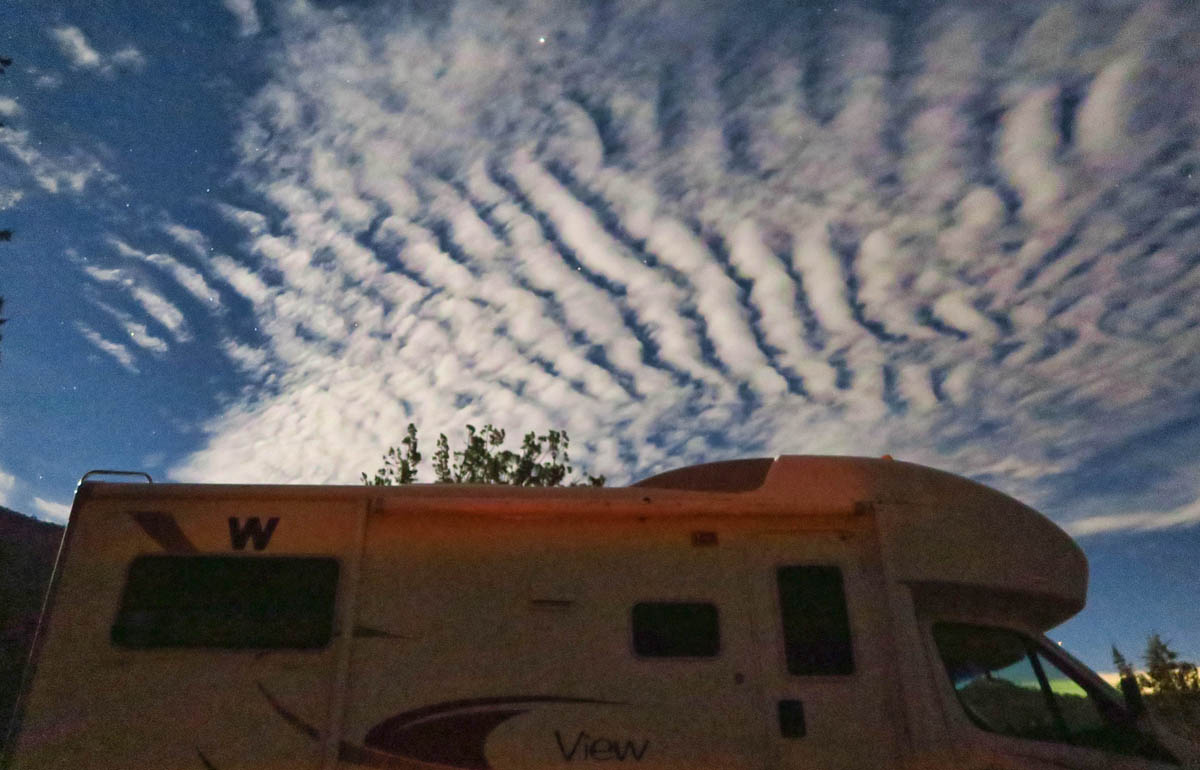 I had the good fortune to end up in Jemez Springs on the night of the full Hunter’s Blue Moon. This was the night sky just as the moon was rising over the ridge to the left. (You can see the glint of light on the Winnie’s metal ladder.)

There were two people working on my rig in tandem for most of the time. They seemed to spend more time talking about what they should do, how they would do it, and what had been done, and looking for misplaced equipment than actually doing the work. And I can’t help but think I was double-billed for the both of them.

They billed an hour for screwing in the four screws and attaching two springs on the new arm lever I ordered to repair the skylight. I could have done that myself, but I had no way to reach it without buying a stepladder.

The bill for replacing the broken shaft in the slide motor was eight hours of work. There is no way they spent eight hours working on it, so I suspect I was paying for both “Click and Clack.”

But the gas furnace repair is what really sticks in my craw. The guy blew it out with an air compressor. It took all of four minutes, yet he billed me an hour and 10 minutes for the job.

Upon being presented the final bill…$1,424.07, I was flabbergasted and rendered speechless. I anticipated a third of that, as 90% of my time on that lot was spent waiting around. 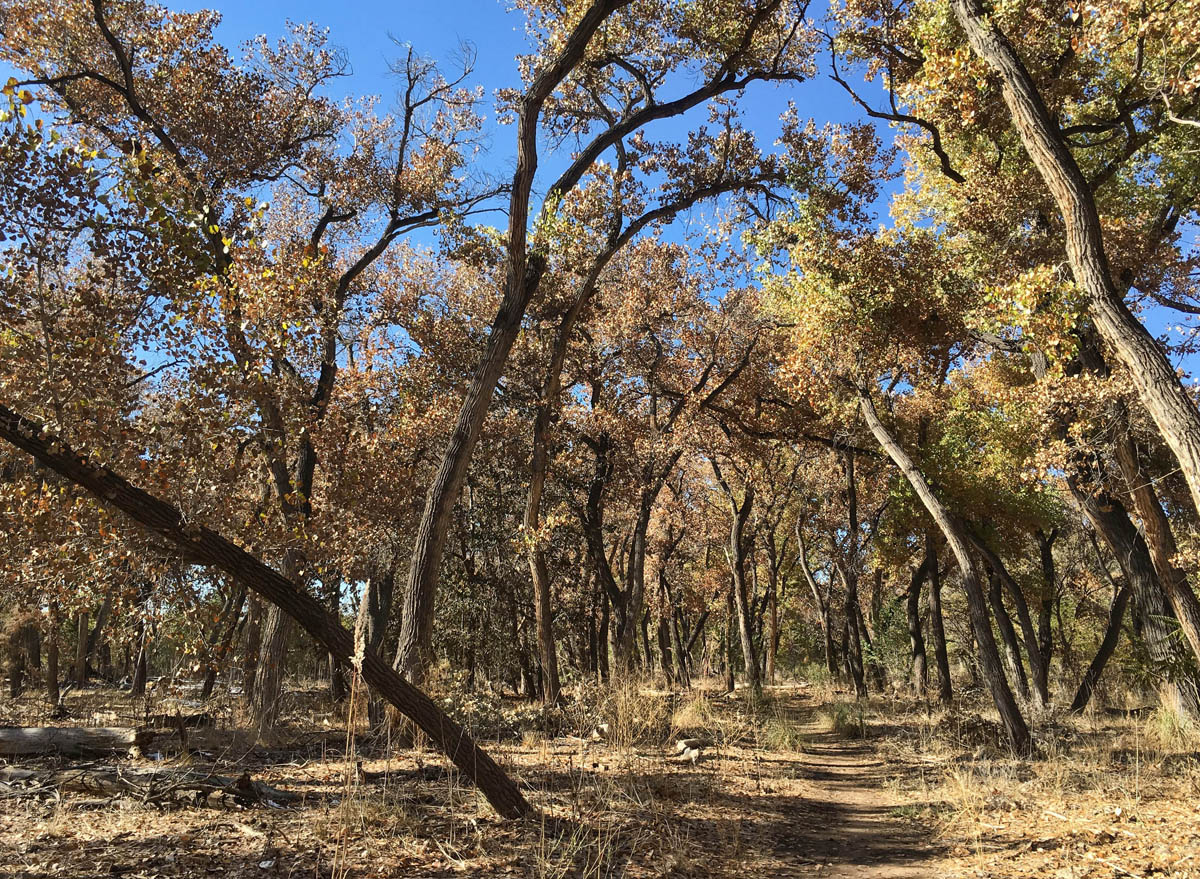 I was really looking forward to walking the Paseo del Bosque path while I was in Albuquerque. 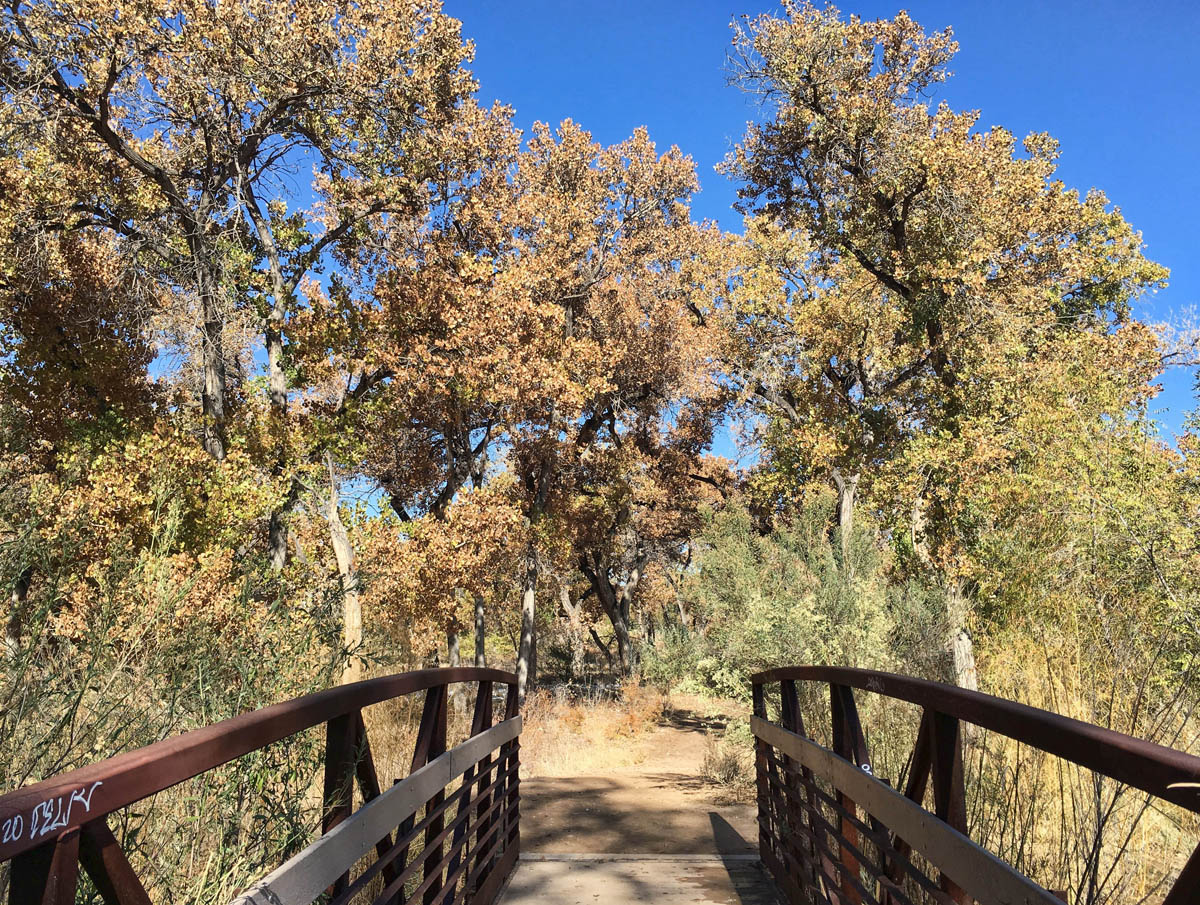 The word “bosque” is Spanish for “forest,” and the Paseo del Bosque is known for its cottonwood forest. Seeing as how I had been “chasing gold” all autumn, I could not wait to see this trail in all its golden splendor! Unfortunately, Old Man Winter got here just before me, leaving behind a very brown town! 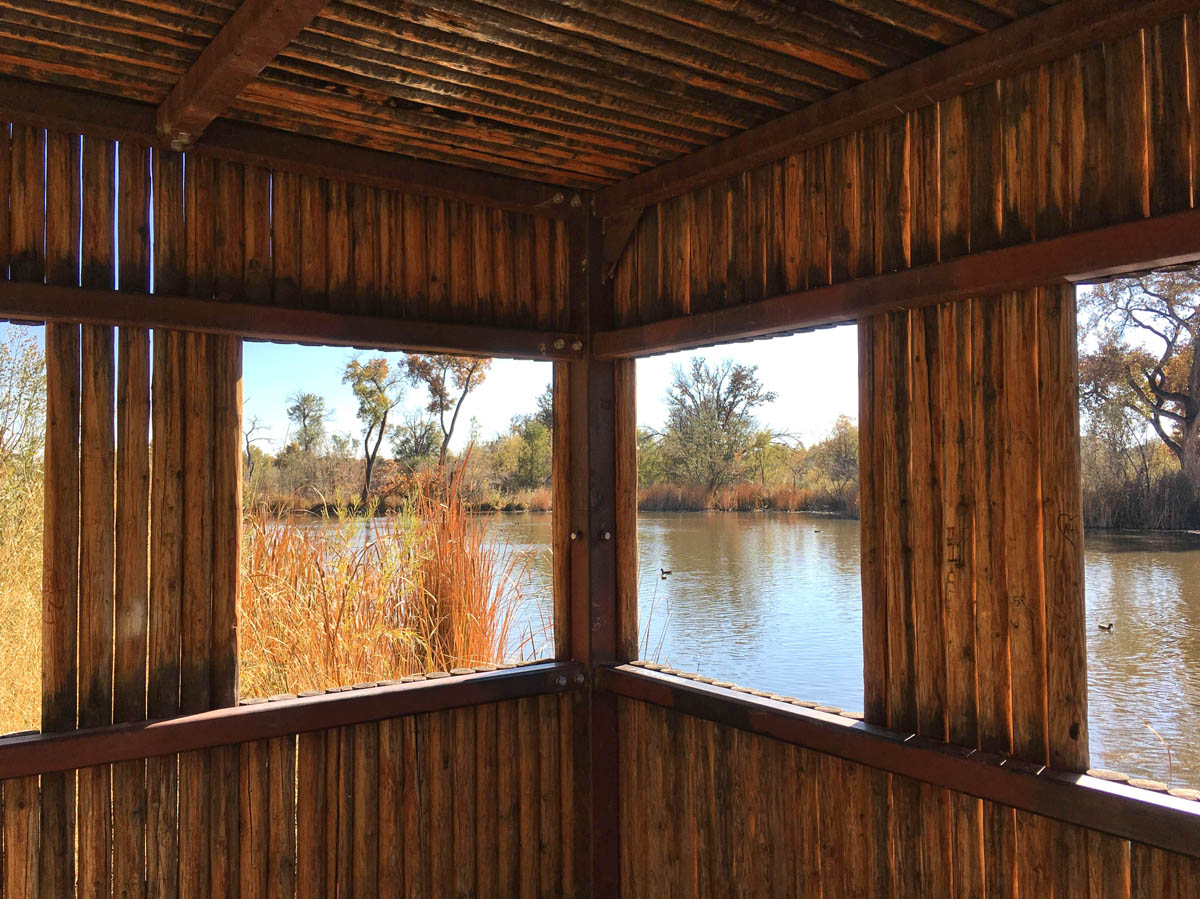 View from inside the duck blind along the Paseo del Bosque path. 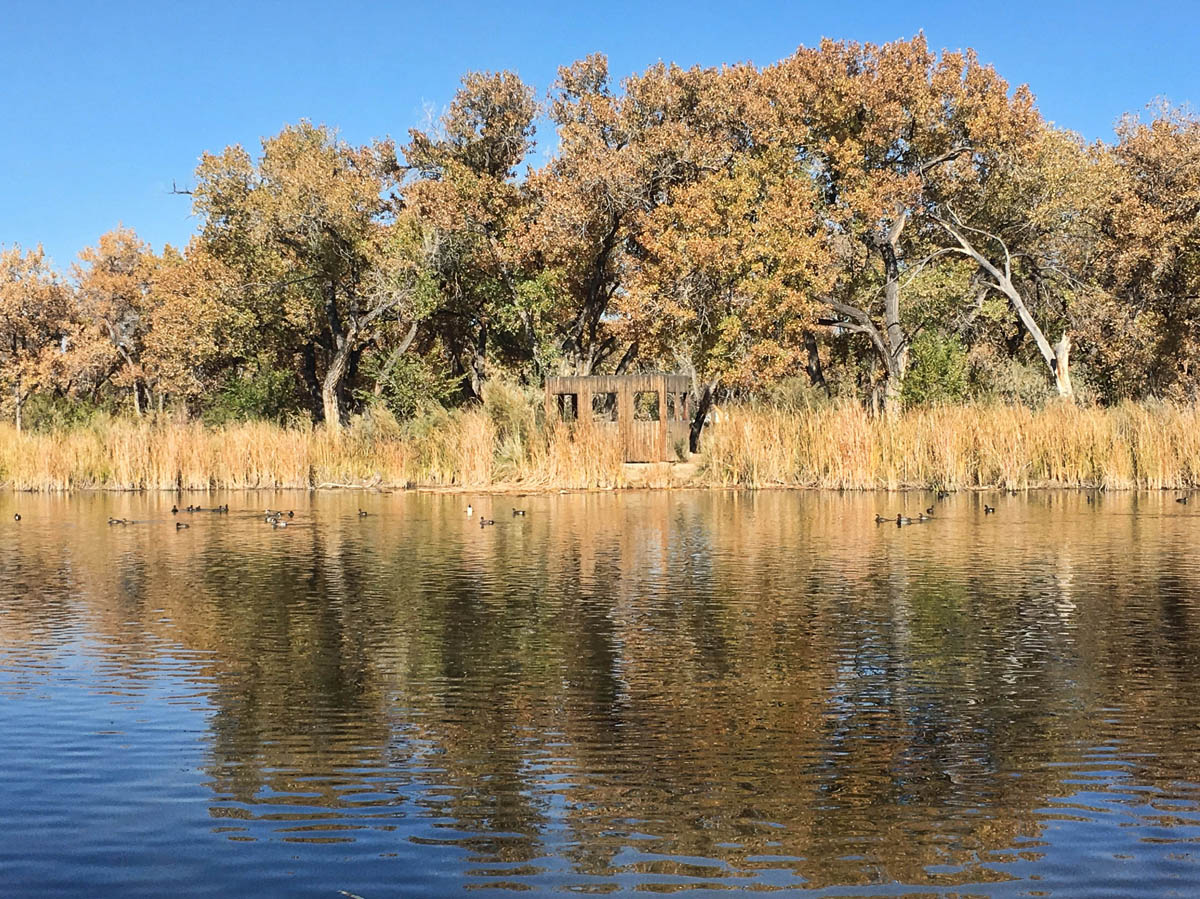 View of the duck blind from across the pond.

Suffice it to say, I cannot recommend Tom’s RV and Repair in Albuquerque. While they came highly recommended, I really think they have got more business than they can handle. Most of my time sitting on the lot was watching them shuffle RVs around the lot like a sliding tile puzzle. Two months later, and I am still “smarting.” I’ve tried so many times to finish this blog post, but it’s been too bitter a pill to swallow. Time hold my nose, gulp it down, and put it behind me, and move on to more pleasant topics…