As I mentioned in my previous post, the only time I ran into another person at the “Egg Hatchery” was when I encountered a photographer in the area at sunset. I had recorded the most direct route as a track on my Gaia GPS app to be certain I could retrace my steps. And I had timed the two mile journey on more than one occasion to maximize my “golden hour” time at the eggs, while still having plenty of time to return to the parking lot with enough light to see the terrain. In addition, I loaded my backpack with all sorts of essentials should my plan fail, leaving me out in the wilderness after dark.

With the sun dropping fast and having now reached my turnaround time, I began packing my things and putting on my backpack for the two mile return, when the photographer approached. We had been engaged in a dance to stay out of each other’s photos since I had arrived at the “hatchery.”  As I was packing up, he asked me, “Would you mind if I followed you out? I am fairly sure I know the way, but I am afraid if it gets too dark, I will lose my landmarks.” (Eye roll) I was looking forward to a lone twilight hike out of the wilderness.  But I didn’t want to be unkind. After all, as someone who had two cell phones, three flashlights, and an SOS signaling device in their pack, he had certainly picked the right person to follow. Well, the only person, in fact. 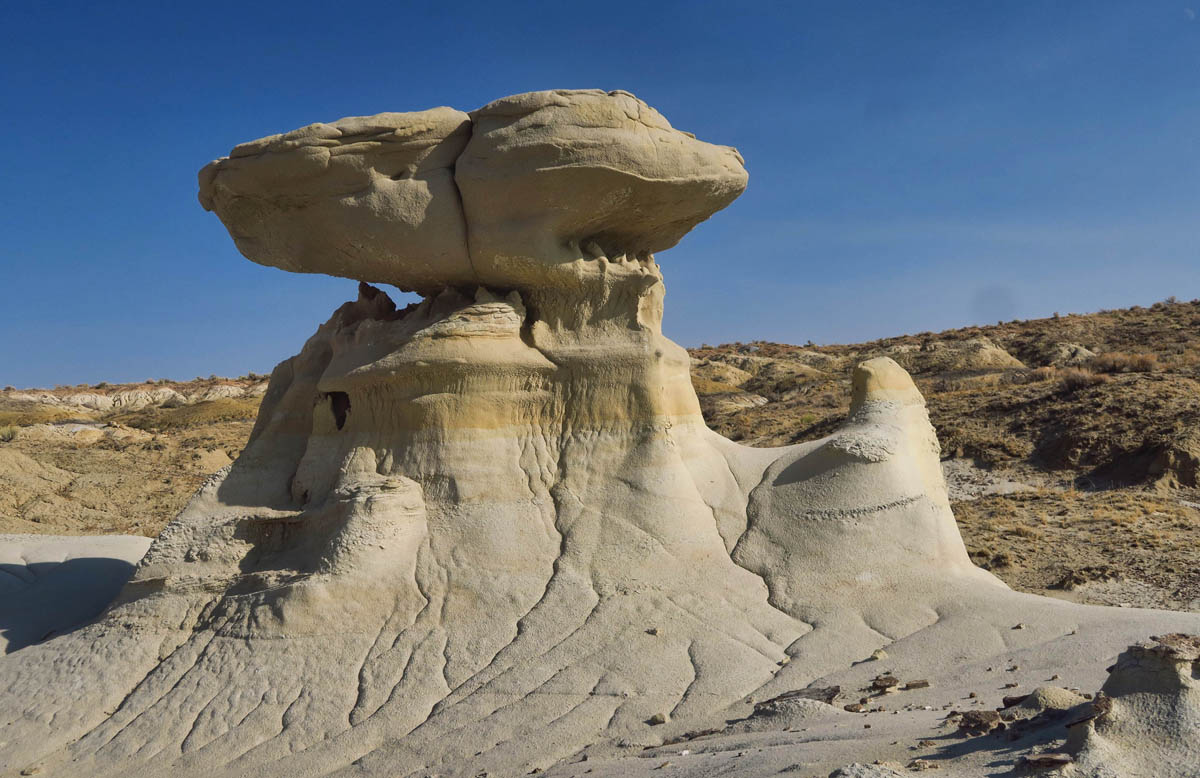 I love how this formation is yellow on the top and white on the bottom. It reminds me of primrose yellow Wedgwood. 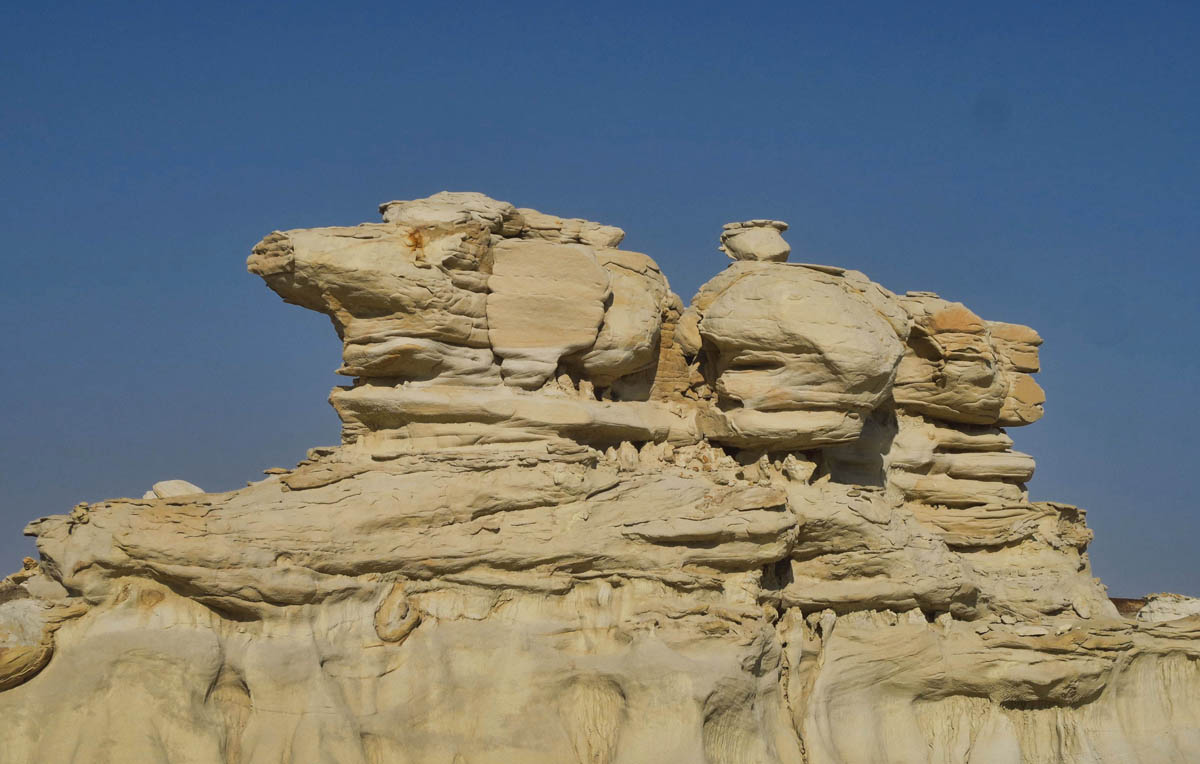 So many formations take on real life characteristics. This one makes me think of Snoopy with Woodstock perched on his back. 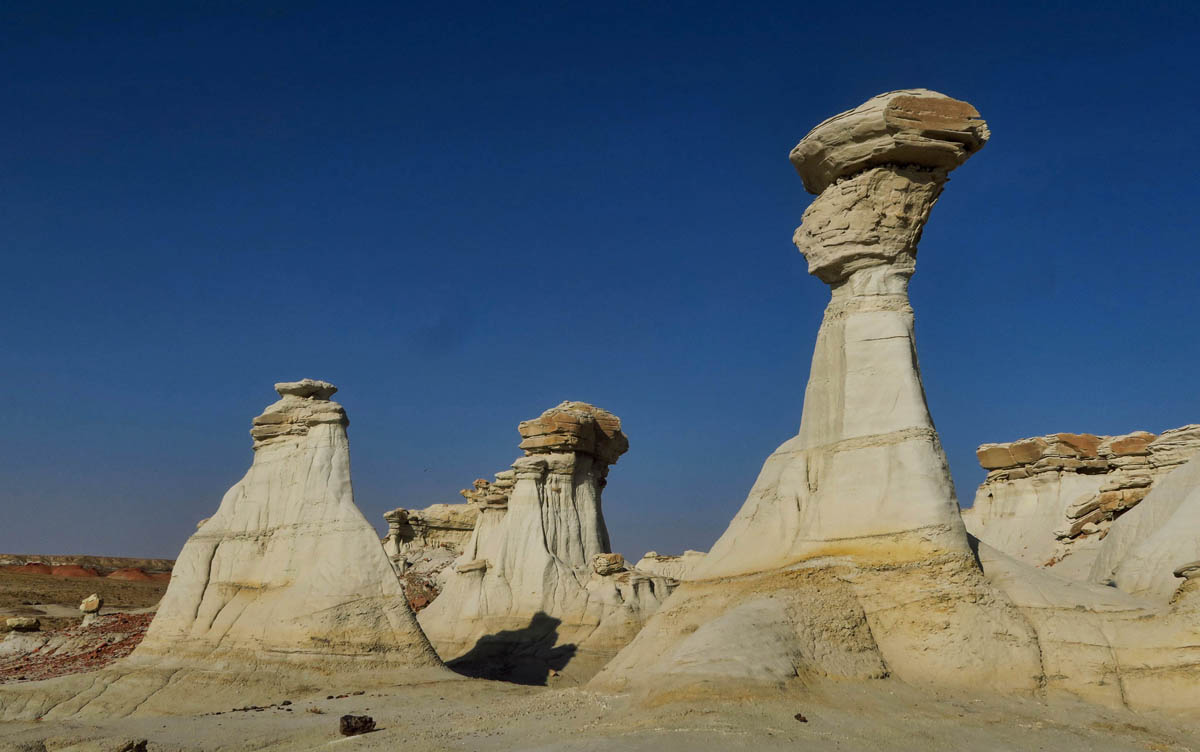 These hoodoos were marked on the app as “The Three Wise Men,” (though I was never quite sure I was in the right spot, as there appeared to be more than three here. If you find them, please let me know if I was off.) 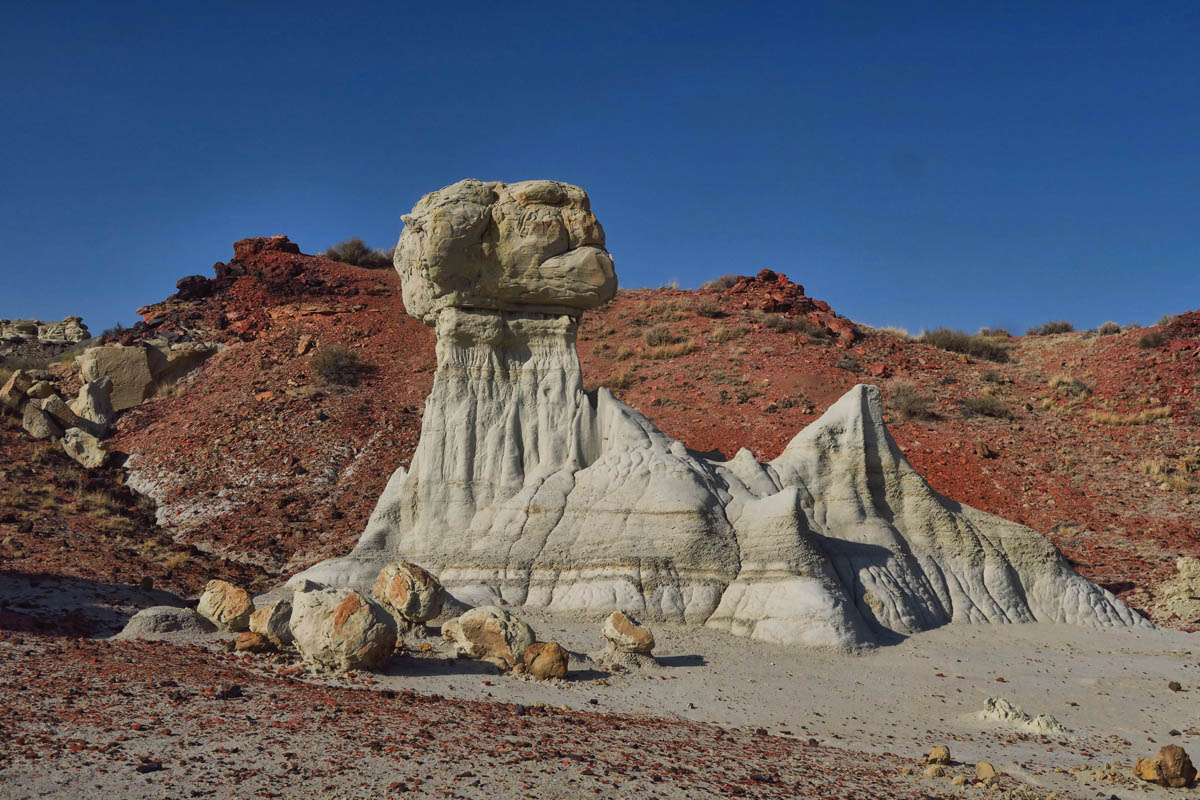 There is a lot more of the yellow caprock here than in Bisti. 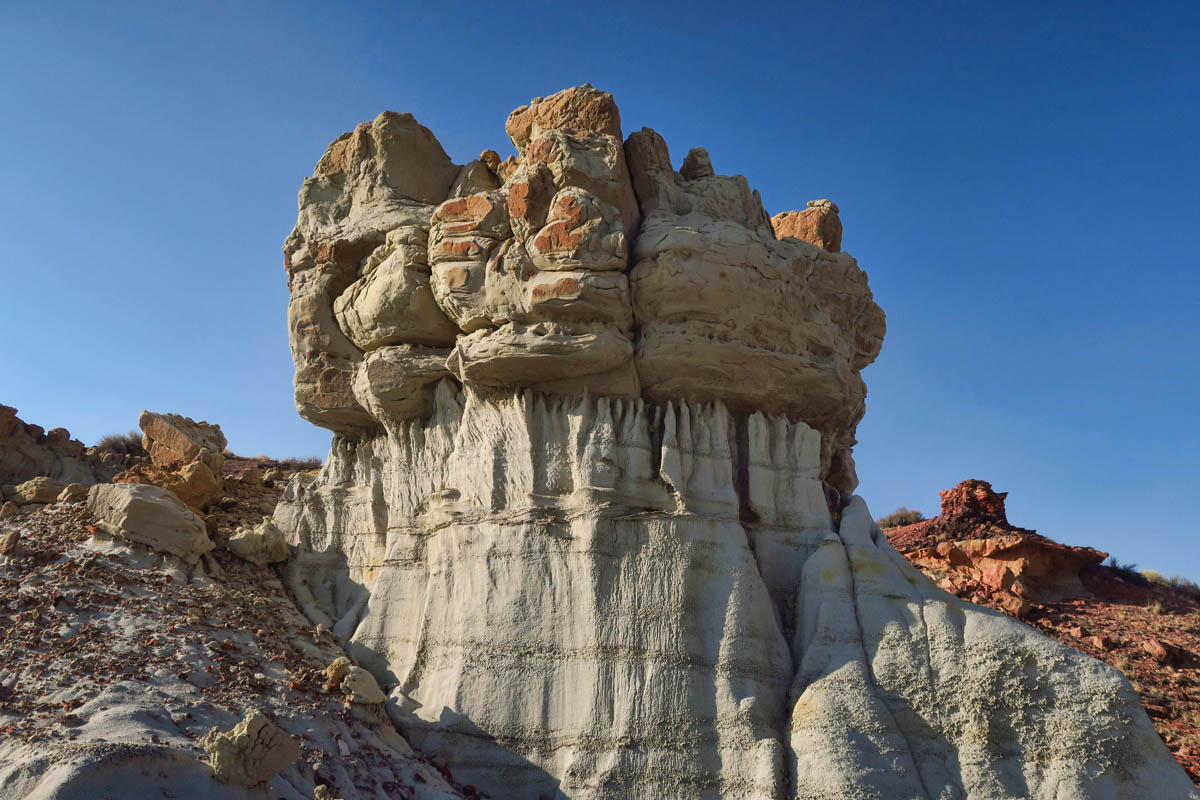 As the photographer and I made our way back, we talked about how the wilderness had turned out to be more beautiful than anticipated for us both. “I just came from the Alien Throne. Have you been there yet?” he asked. “If I have, I didn’t realize it. Where is it?” So he proceeded to tell me how to get there. Ten miles down Hwy 371, then turn left. Go another eight miles until you come to a T intersection. Then go right. Then he gave me some landmarks for the final turn onto a 2 mile stretch of road. “You’ll need high clearance for that one, as the ruts are so deep you’ll drag bottom….too deep to drive in them, too narrow to straddle them.”

So only two miles of the road was marginal, then. I could walk that if I needed to. Once I got back to the Winnie, I immediately googled “Alien Throne.” As if the name of the feature was not intriguing enough, I learned it is located in an area called “Valley of Dreams.” Can this area get any better?

When looking at the map to find the Valley of Dreams, I was surprised to find it so close to Chaco Canyon. (I believe there might be a more direct route from Hwy 550, but I was already parked along Hwy 371.) How did I manage to do all that research for my visit to Chaco Canyon back in 2016, but miss all these incredible surrounding sights? 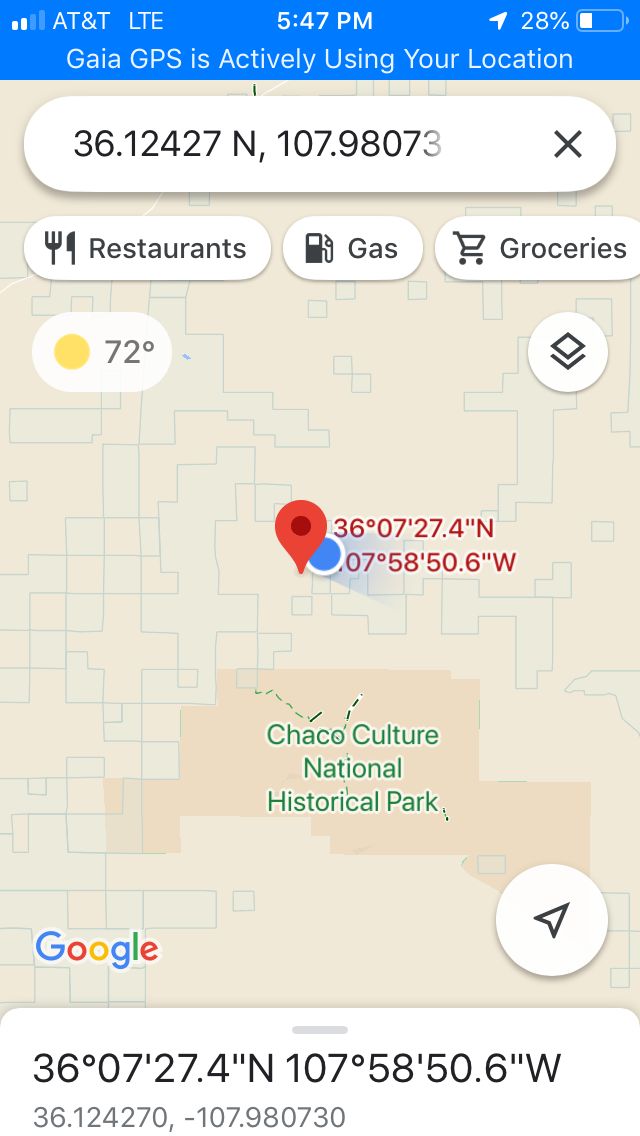 I had no idea Valley of Dreams was so close to Chaco. It looks like I could almost walk there. 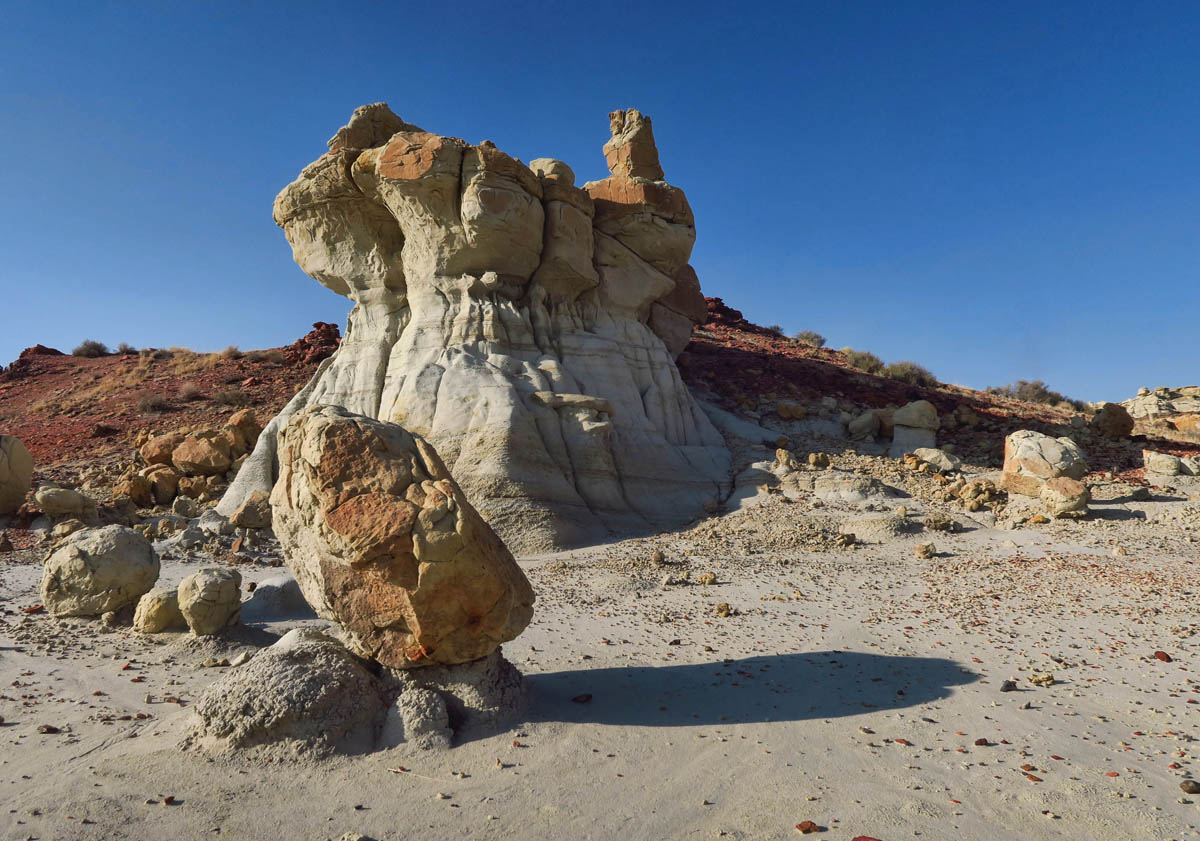 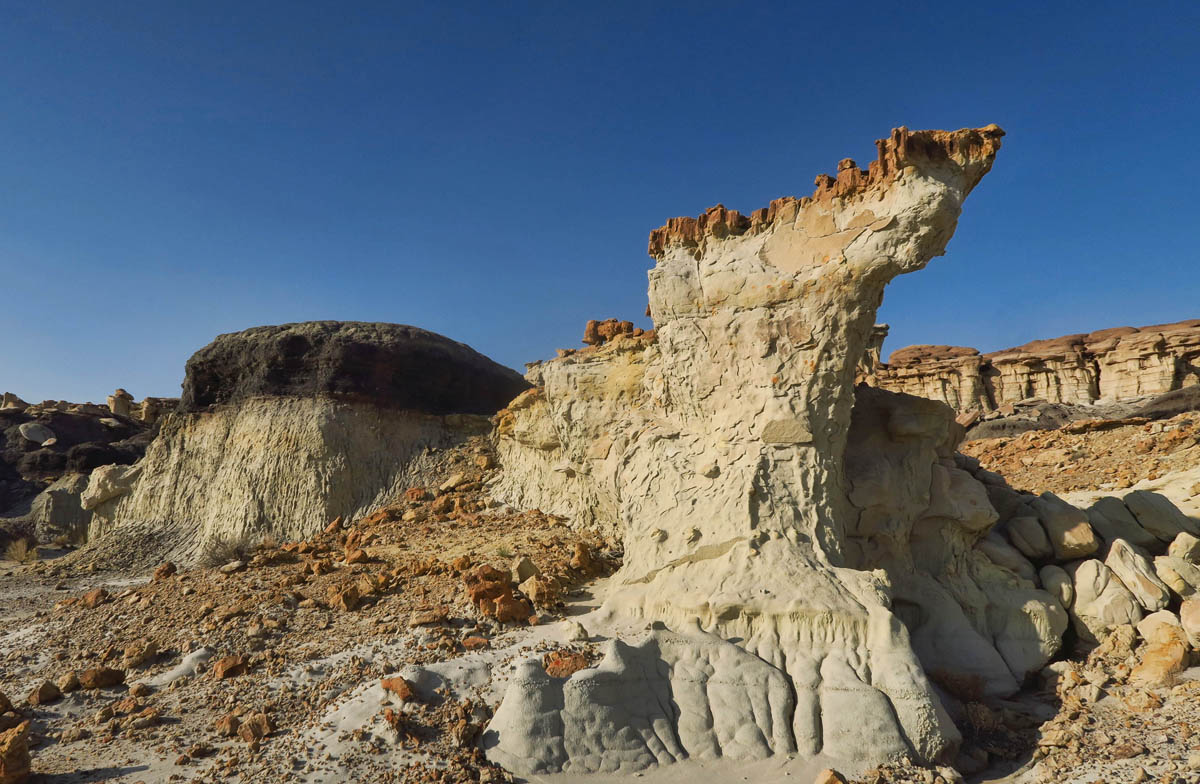 The loop around Valley of Dreams is reported to be 3.7 miles. 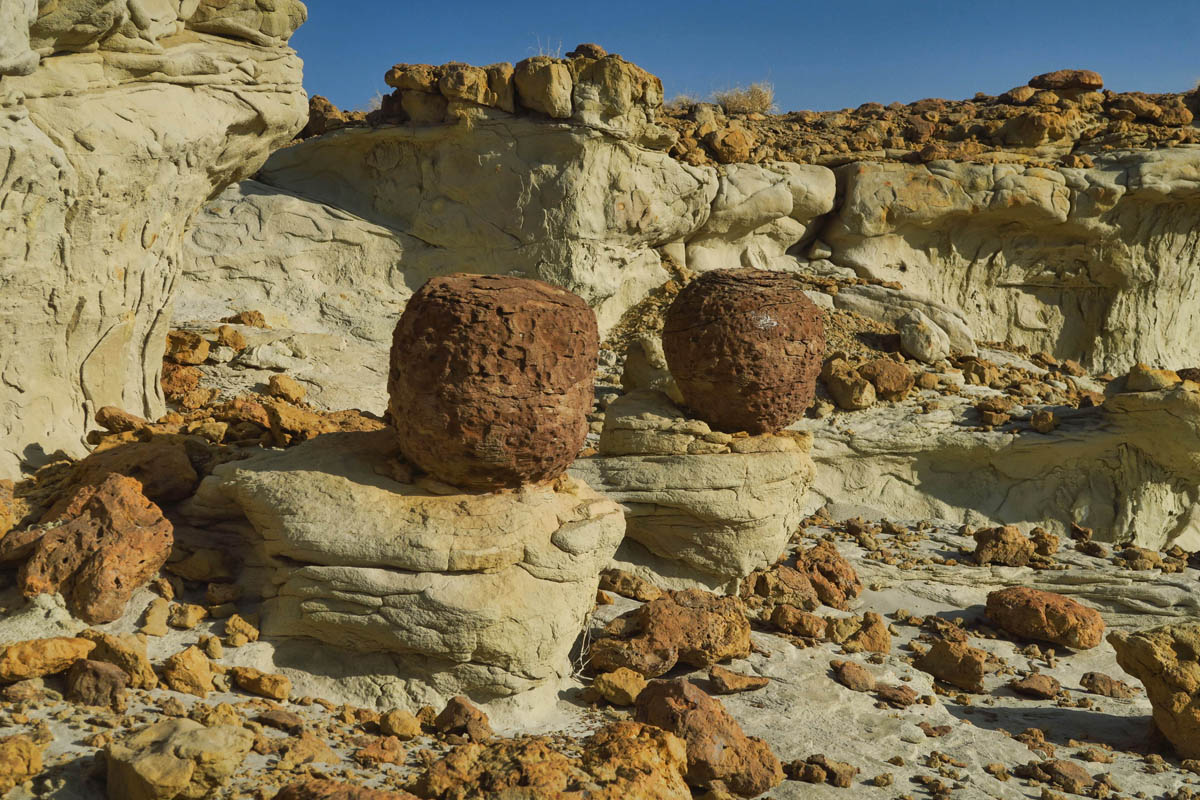 I loved these round formations that looked like pottery jars. There were lots of them in this area. 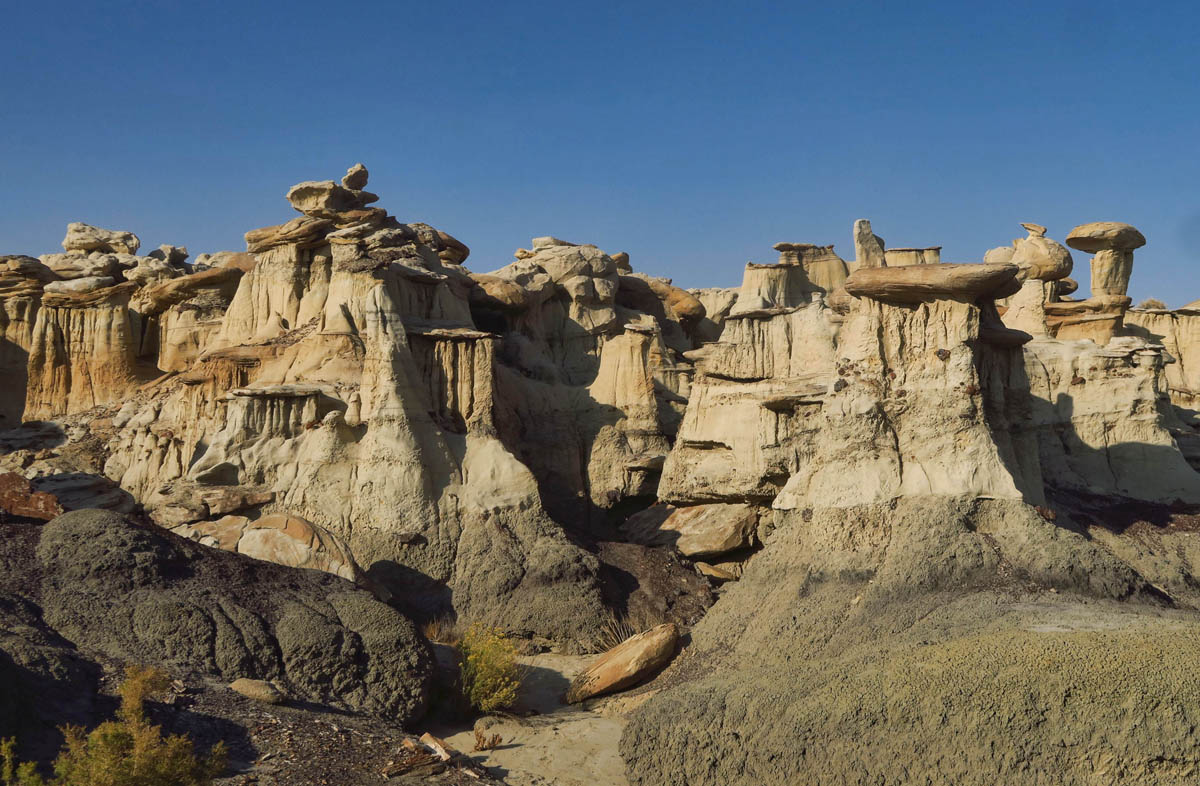 As I wander the water-carved clay hills, I find myself singing, “Someone left the cake out in the rain.” 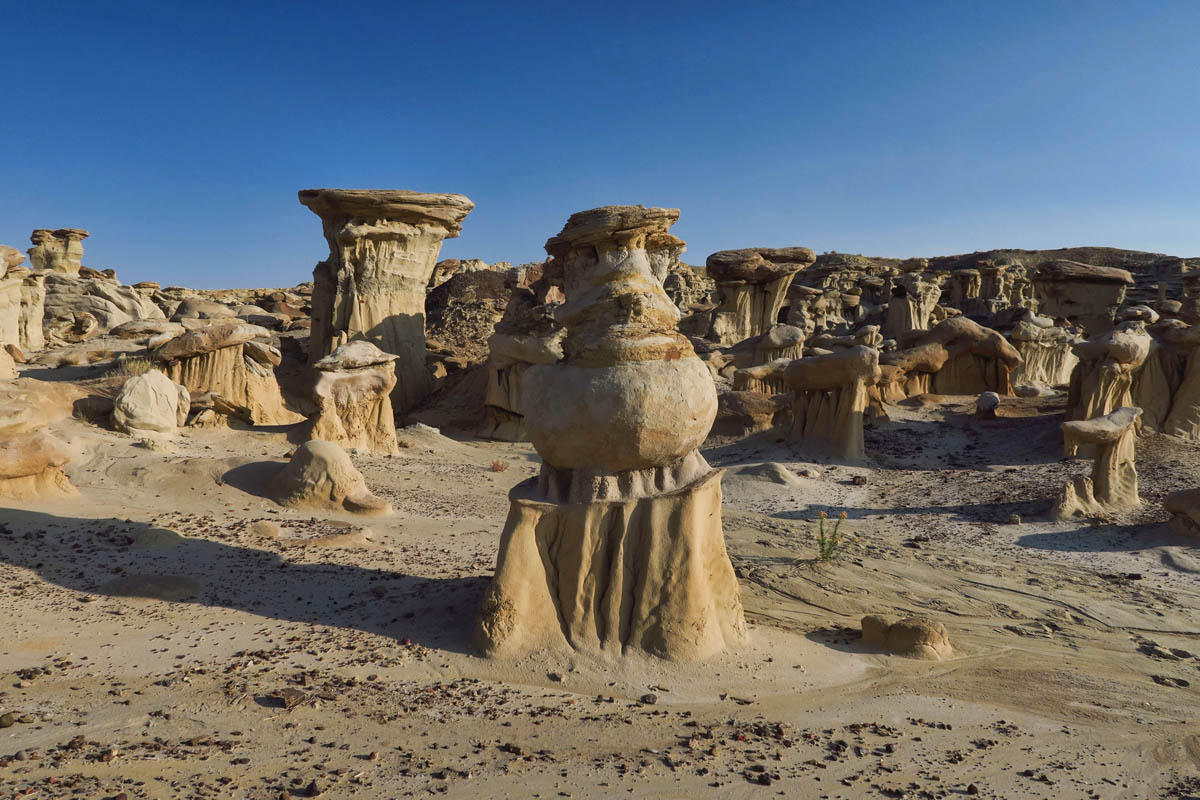 Some of these formations are puzzling as to how erosion made such varied shapes.

While the Valley of Dreams is much smaller than any one area of the Bisti, its features are more concentrated. Once you reach the area, (which again one must hike for at least a mile from the road through some rolling terrain, then cross the wash) it is like a fine collection of china porcelain sculptures, confined to a small area, yet their delicate beauty is worthy of the trip.

Just as with the Bisti Wilderness, there are no designated trails or directional signs to, from, or within Valley of Dreams. One must find their own way. But again the Gaia GPS app proved to be invaluable, as there is a suggested loop marked by dotted line on the map, complete with the locations of the more recognizable features such as Alien’s Throne. (NOTE: There is zero cell signal in this area, so make sure your GPS works from satellite, independent from cell signal, or that you have downloaded the map before you come.)

The final two miles of the road was every bit as bad as the photographer had warned. It was a smooth road, but the ruts were a foot deep in places. Fortunately, since the Tracker has a more narrow wheel base than the giant dualy trucks that drive this stretch, I was able to straddle the edges of the ruts to keep from dragging bottom. I thought several times of just pulling off the road and parking it, and walking the rest of the way. But this is Navajo land, and I get a sense they don’t take too kindly to squatters. 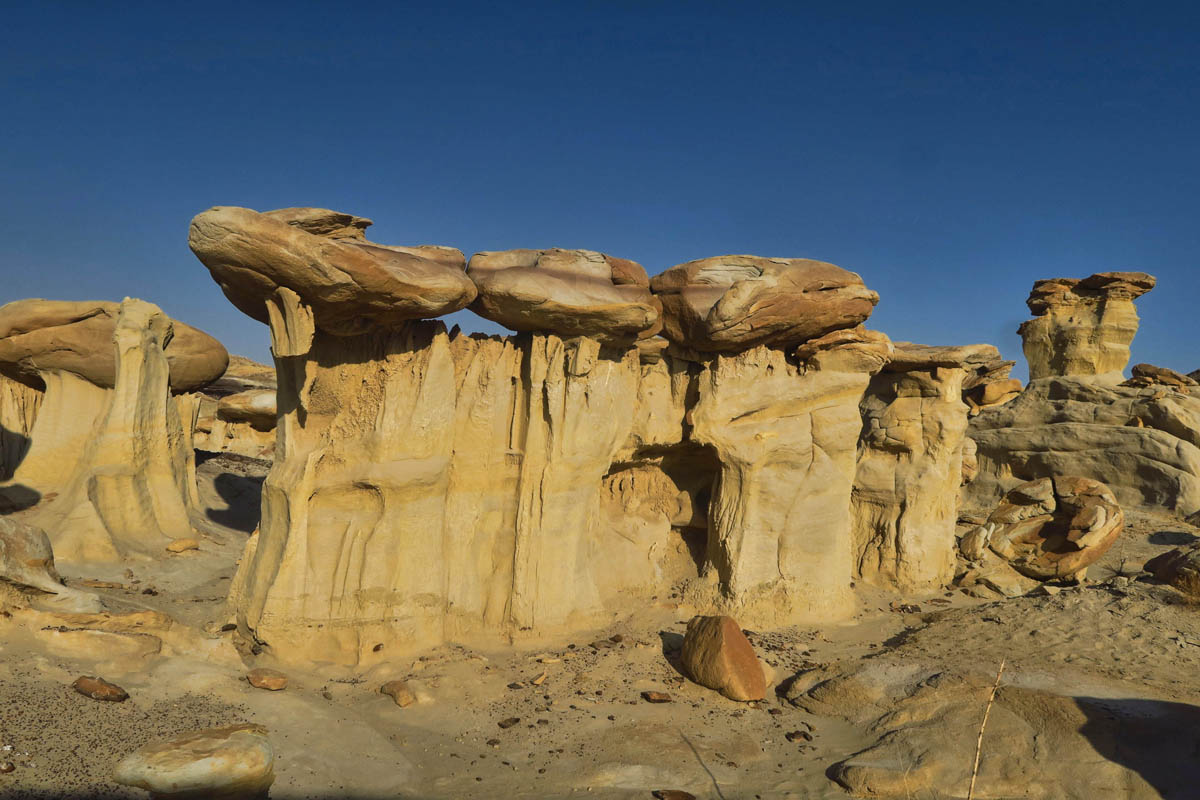 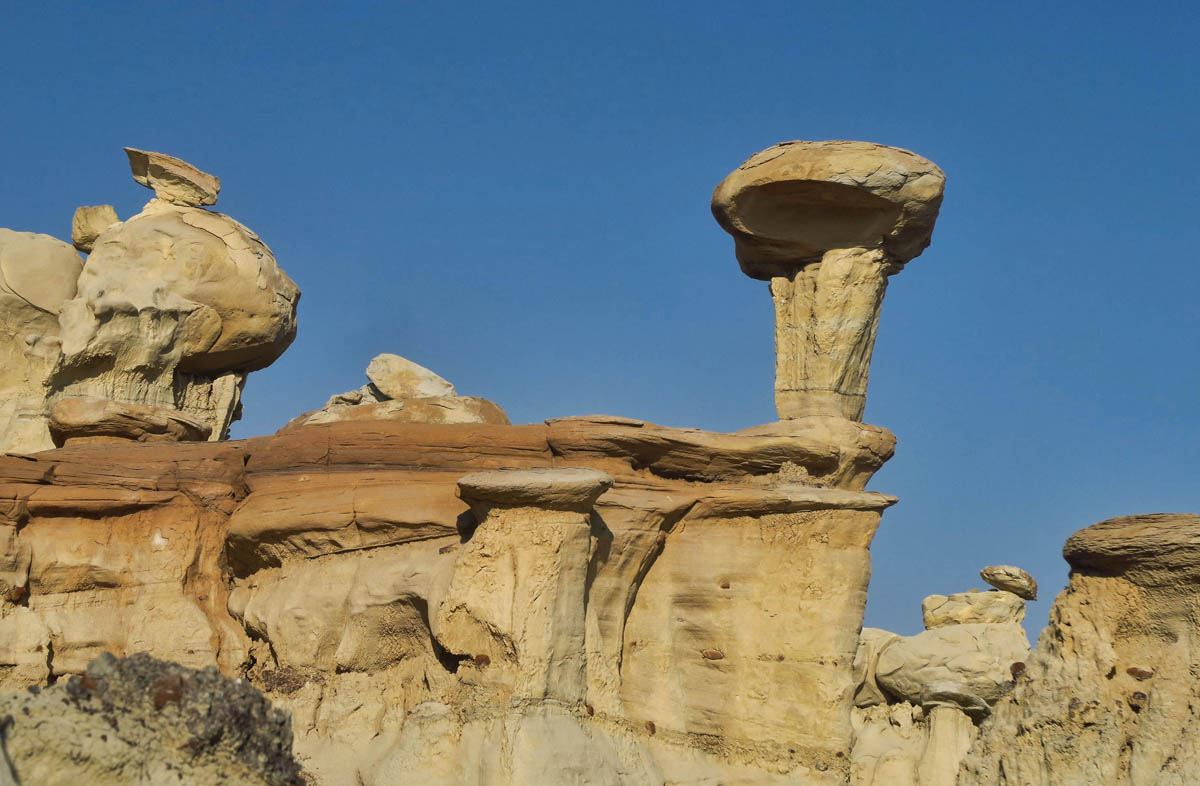 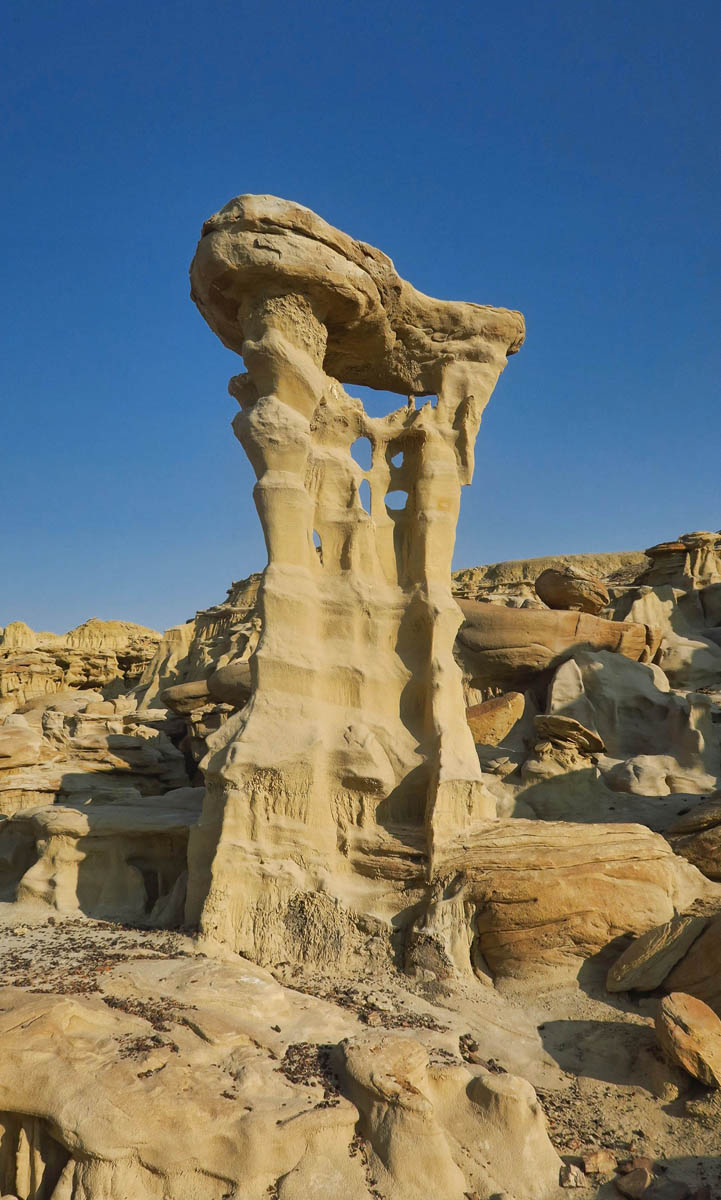 Halfway around the loop, I finally come to the iconic feature, the Alien Throne. 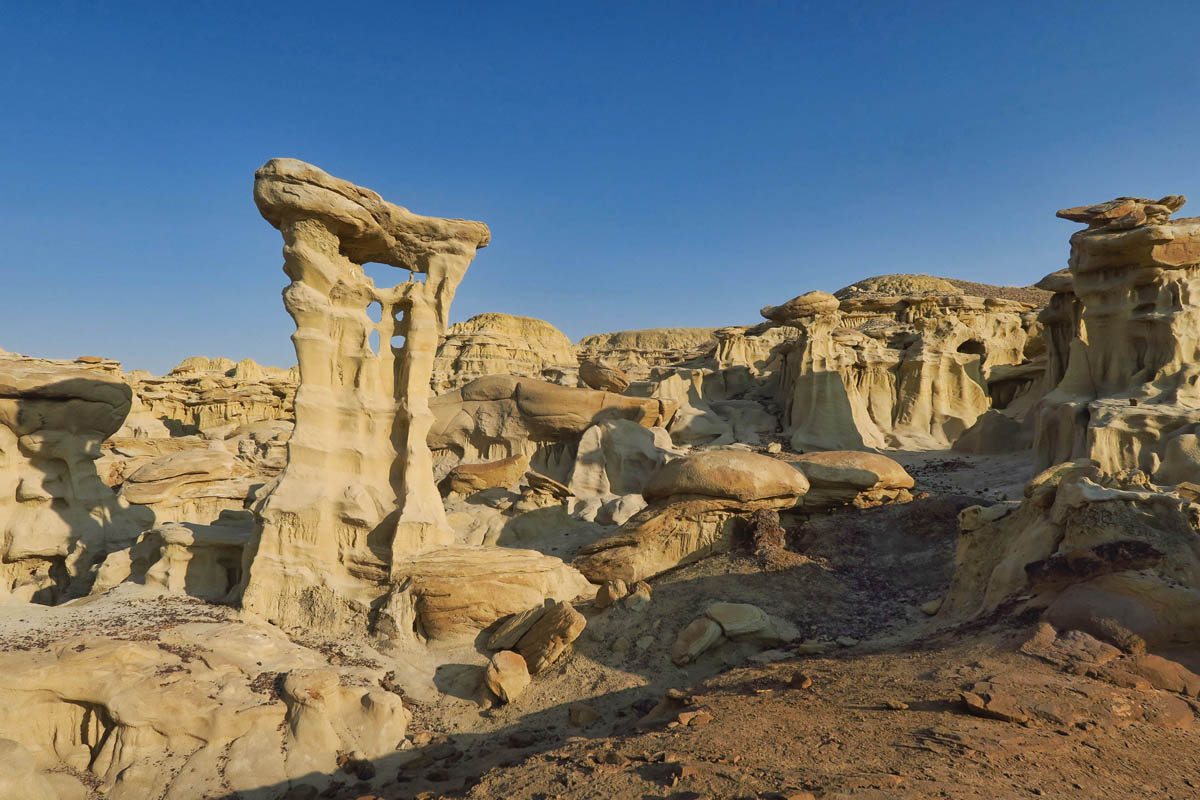 This is another formation where I wish I had a person for scale, as it was at least twice my height. Maybe more. 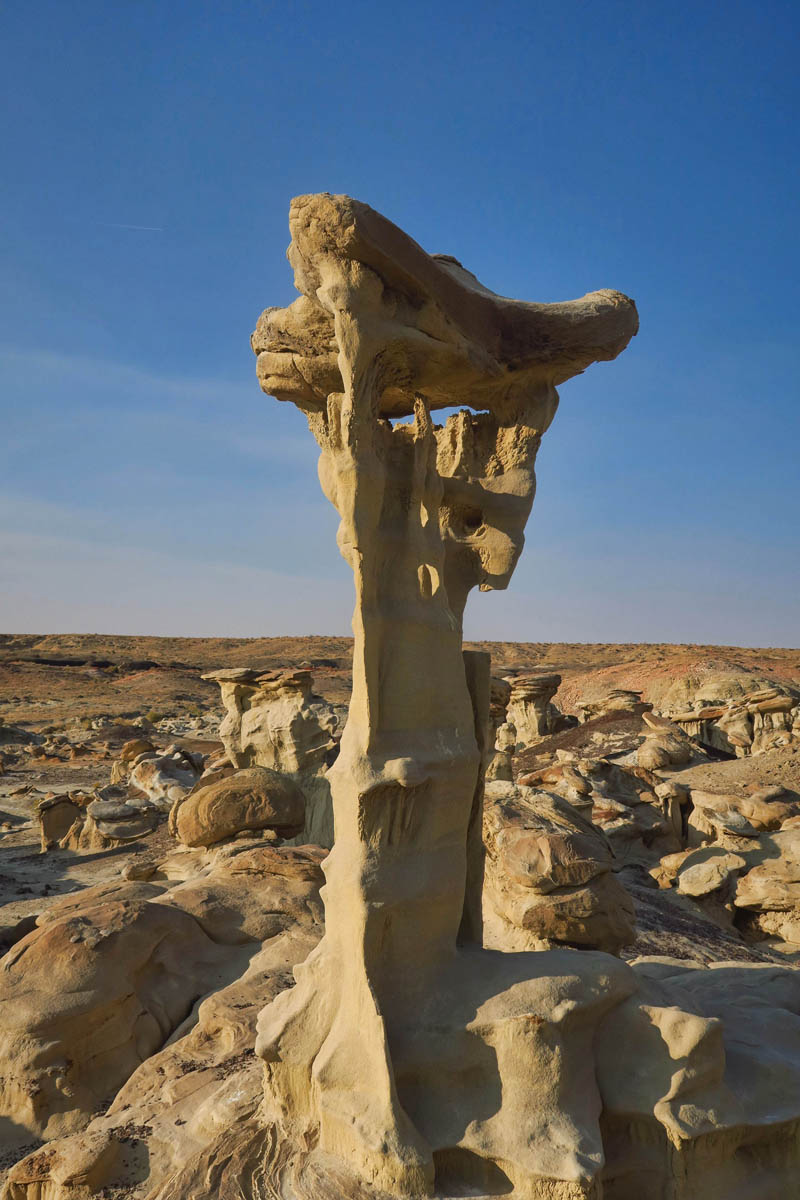 From this angle, it looks more like an Alien Saddle.

Having not seen another car for miles, I was a bit nervous when I came upon a parked truck on the side of the road. I rolled down the window with my most respectful face and greeted the older gentleman in the cowboy hat. We chatted for a while as he talked of “the land.” He warned me a couple of times, “There is no bathroom down there!” I kept saying, “That’s fine, I’ll leave if I need a bathroom.” Finally I asked why he was sitting there. “I’m watching the ship,” he said. Still being in the mindset of every formation looking like a real life thing, I looked all around, across and behind me. I replied “I don’t see a ship. Where is it exactly?” Then he points to a flock of sheep up on the hillside. “Oh, SHEEP! Got it. Okay, have a great day!” as I slid my wheels back down into the ruts and drove away, my respectful face now burning from embarrassment.

Valley of Dreams was yet another place I had the delight of exploring all alone. Something about wandering through this treasure hunt with no one to distract me felt like an ethereal moment suspended in time. The quiet was eerie. The light, so soft. I felt like the only human life form among an abandoned alien playground. 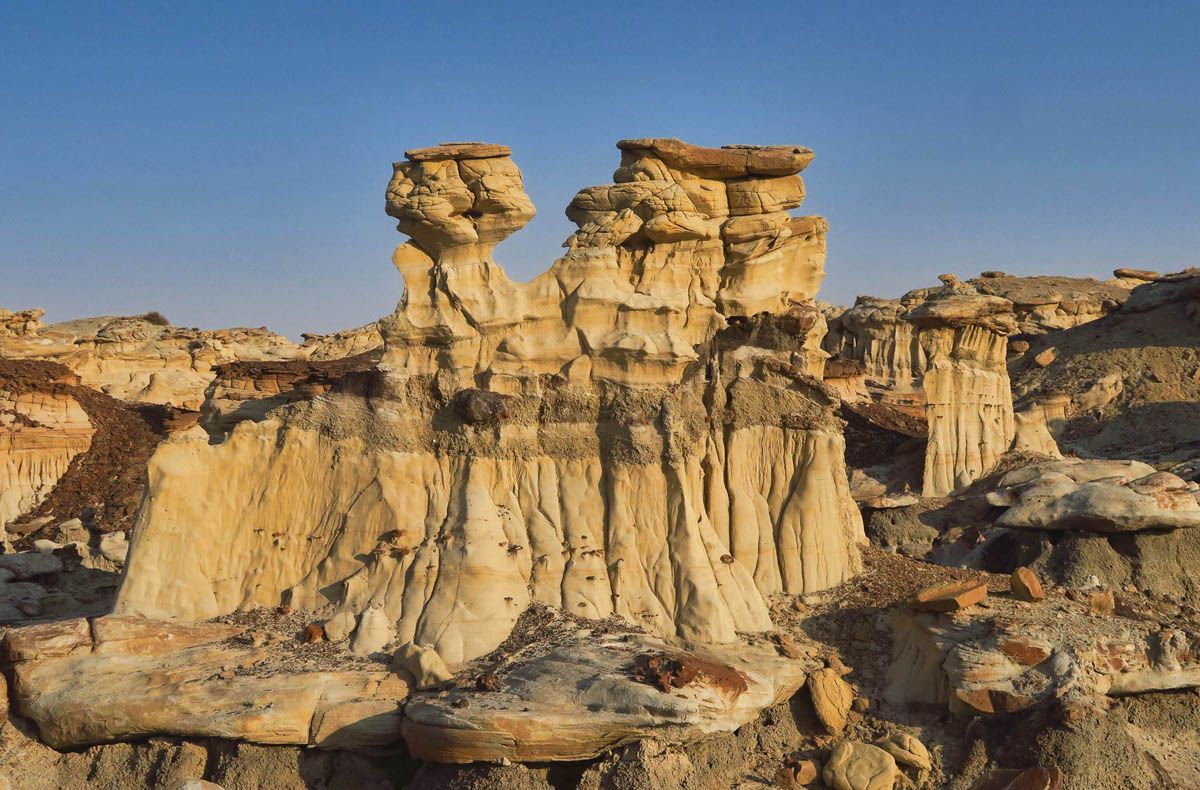 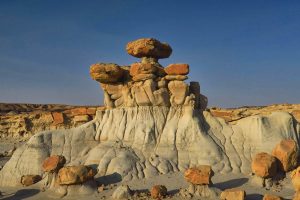 This was one of my favorite formations of all with its tri-color layers. 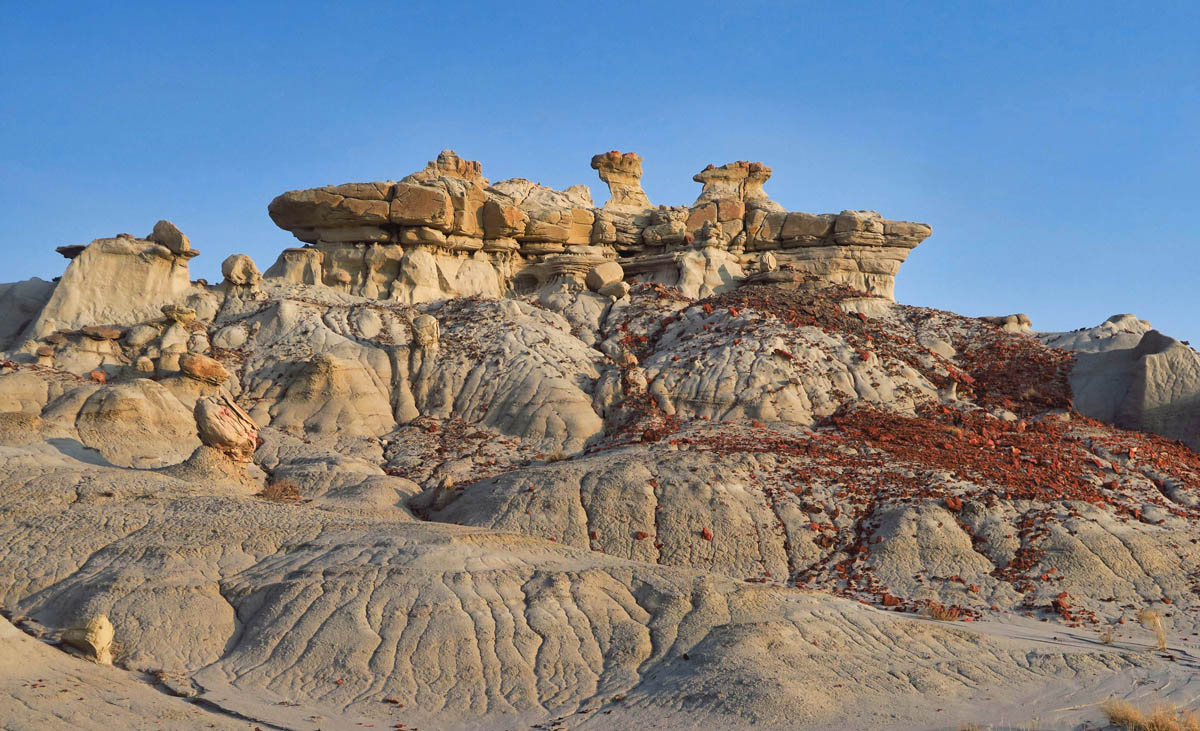 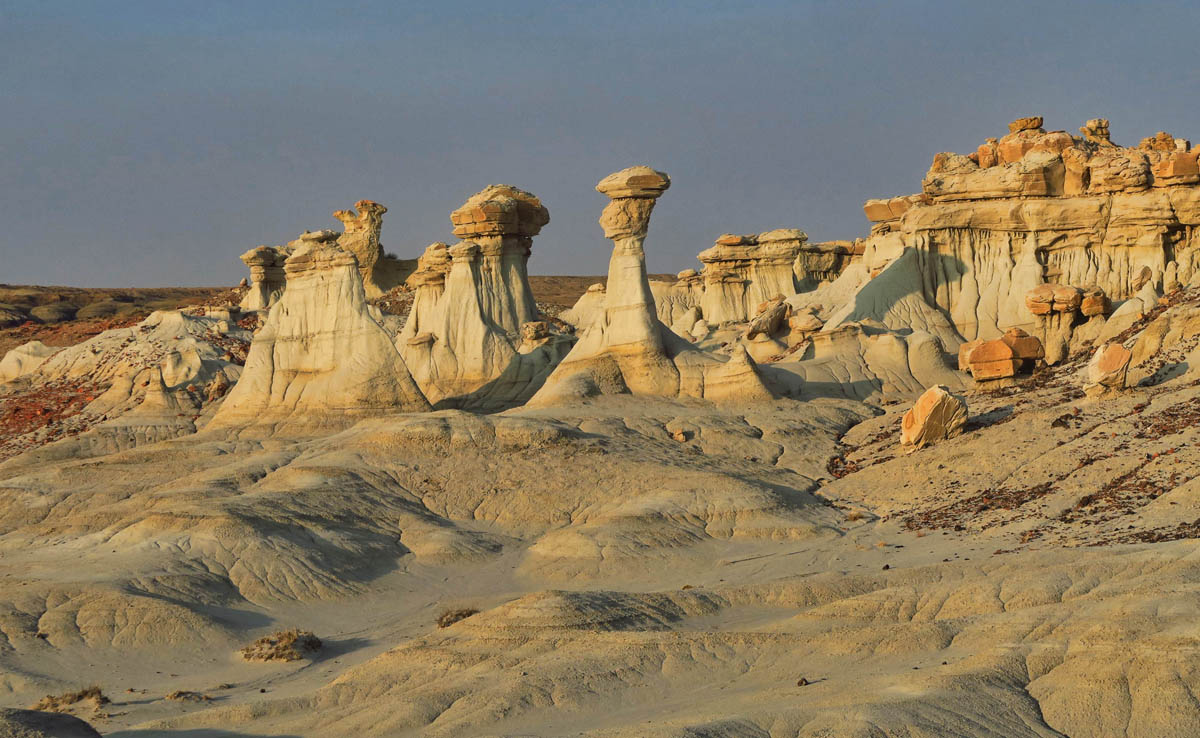 Another view of what I believe to be referred to as the Three Wise Men. 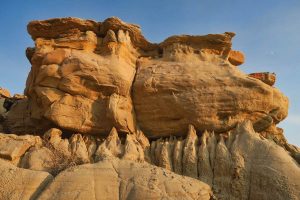 The many intricate tentacles beneath this giant rock are beautiful. Delicate, yet powerful in their numbers.

The Ah-Shi-Sle-Pah Wilderness, named for the Navajo word meaning “gray salt,” encompasses 6,500 acres. Valley of Dreams is not the only area of interest within this wilderness. There are two more areas of photographic interest in the wash; the Wilderness Study Area on the south side of the wash, and the King of Wings area on the north side.

But I was running out of time, with only one day remaining to explore one of the three areas. The forecast was deteriorating rapidly, so I decided to move on into Albuquerque. Since my gas furnace was not working, I needed to find a spot with hookups in prep for the forecasted freeze on the way. And I also wanted to position myself closer for my upcoming appointment at the RV repair shop….More on that coming up!

15 thoughts on “Aliens in the Ah-shi-sle-pah Wilderness”