Continuing clockwise around the “clock face” traced by Route 1, Iceland’s Ring Road, Akureri is just a little past midnight. This post follows the Ring Road only briefly as I veer off headed north again along the fjord to Husavik, then zig-zag back across headed south of the Ring Road toward the Lake Myvatn area, then back north again to Ásbyrgi Canyon.

I did more bouncing around in this stretch than the others because I stayed two nights in the same campground, so there was backtracking involved. Basing myself in the Lake Myvatn area allowed me to visit a few attractions early in the morning, thereby getting a jump on the tour buses. It was also the perfect positioning to be near the Myvatn Nature Baths for an end-of-day soak. So there was actually a method to my madness for what might look like an erratic travel pattern on the map.

While the south of Iceland has the famous “Golden Circle,” the north is offering some competition with its “Diamond Circle.” In this post, I visit the four primary stops around the Diamond Circle.

I did a lot of research prior to my Iceland trip…probably more than I have ever done for any destination. Not only did I want to maximize my time there, but the online resources for Iceland are abundant. There are hundreds of vlogs, blogs, tourism websites, and online experts all offering advice the likes I have not seen for any other international destination.

I found it tough to get my arms around an itinerary that would enable me to see all I wanted to see, and still make my target stops where I had pre-booked activities. I found the best way to do this was a combination of Excel Spreadsheet and Google’s “My Maps” feature. Yes, it was a lot of research. But there is only so much to do in the tiny mountain town of Cloudcroft, NM, during monsoon season. 😉

This is my Iceland “potential stops” list made using Google’s “My Maps.” I liked using the tool, because I could create my own colors and images for the icons, so I knew at a glance orange was a lighthouse, light blue was a hot springs, dark blue was waterfalls, etc. I then created a corresponding spreadsheet with prospective dates and details of the destinations.

As I make my way around the Ring Road turning south, I am now entering the area that is just one waterfall after another. It’s one of the things for which Iceland is most famous. Impossible to know how many waterfalls there are in Iceland, a Google search returns “over 10,000.” It’s rare to drive more than an hour without seeing one along the roadside. One might think “You’ve seen one waterfall, you’ve seen them all.” Actually, I have been guilty of that cynicism myself. But when you start to visit them up close, stop and spend a little time observing, they each have their own nuances that make them uniquely magnificent.

As I mentioned before, the Icelandic language concatenates a lot of words. The word “foss” means “watefall.” So for this reason, you never add the word “waterfall” after a waterfall in Iceland, because it would be redundant. To say “Dettifoss Waterfall” would be like saying “Detti Waterfall waterfall.” It’s just “Dettifoss.”

While researching which waterfalls I wanted to see, I found myself singing that old nineties song by TLC, “Don’t go chasin’ waterfalls….” It was an ear-worm of a song that stuck in my head as I would pin each of the different waterfall icons to my Google map.

My niece, Hannah, and I share a similar belief. We often hear songs playing overhead via piped-in music, typically out of genre, and believe they come with a certain significance, like a “sign” if you will. On the morning during my layover in New York, I nervously paced through the neighborhood pharmacy doing a little last minute shopping while trying to distract myself from the crushing anxiety of awaiting my rapid antigen COVID test result. A negative result was all that stood between me and my flight to Iceland in less than 48 hours. However, a positive result would send me scrambling for a place to quarantine in the country’s most expensive city. So I had a case of high anxiety.

I kid you not, while standing in the aisle at the pharmacy, that TLC song started playing on the overhead speaker, “Don’t go chasin’ waterfalls….” Just that moment, I got the “PING! Your COVID test result is NEGATIVE!” Downright spooky!

So off we go, chasing some of Iceland’s most iconic waterfalls… 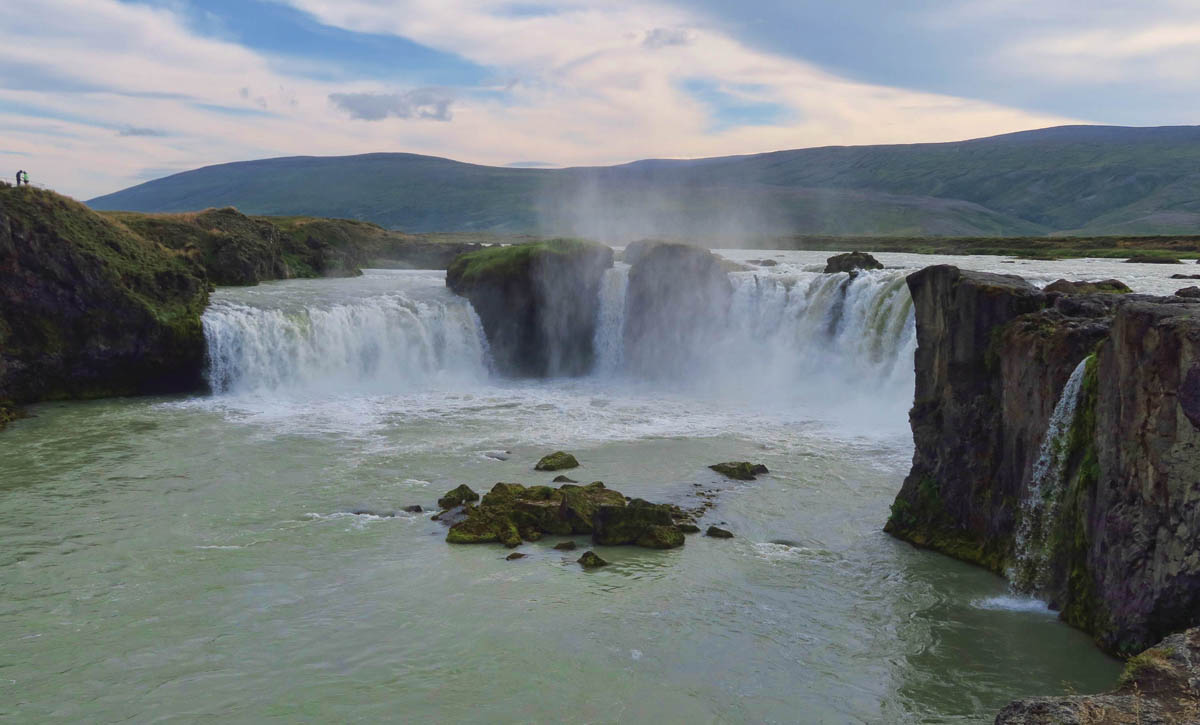 Right off the Ring Road is one of the most popular stops in the north, “Goðafoss.” The name is tied to Iceland’s decision in the year 1000 to adopt the Christian faith. Legend has it when the decision was accepted, the chieftain threw all his statues of pagan gods into the waterfall, thereby earning it the name of “Waterfall of the Gods.” The horseshoe-shaped waterfall is much wider than it is long with a drop of only 40ft. It comes from Iceland’s fourth largest river, Skjálfandafljót. 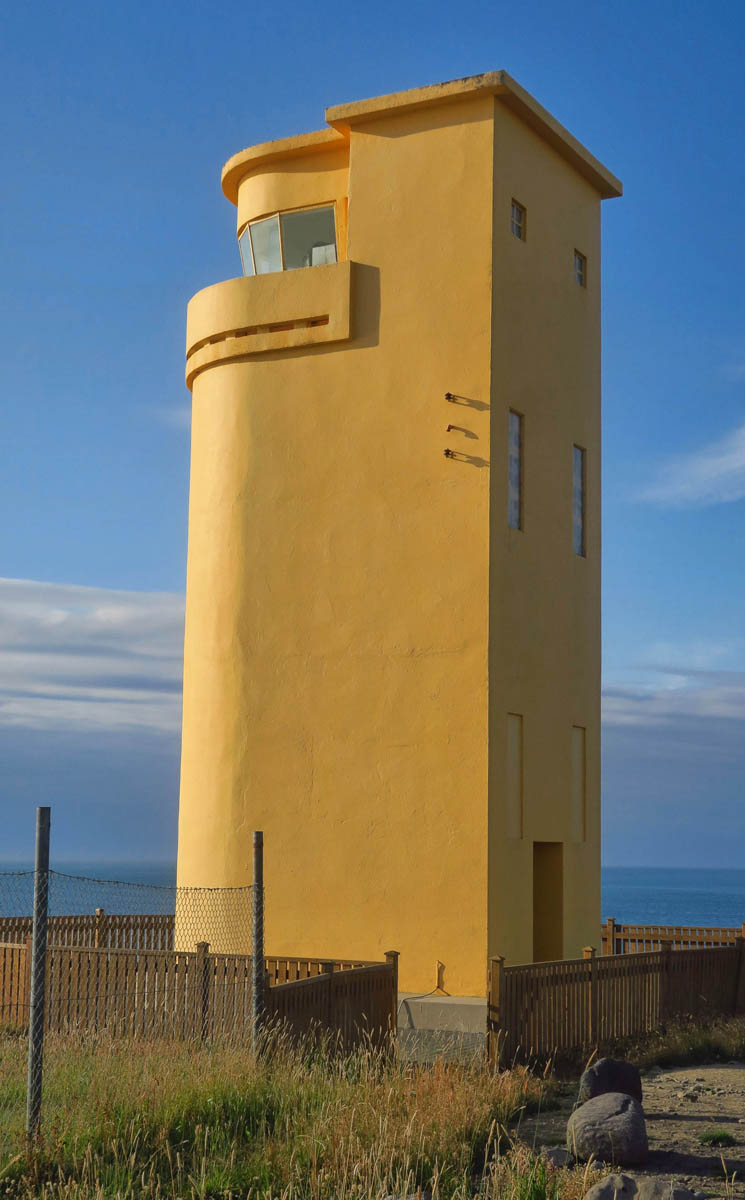 I haven’t chased too many lighthouses in Iceland because many of them look like this. Utilitarian. 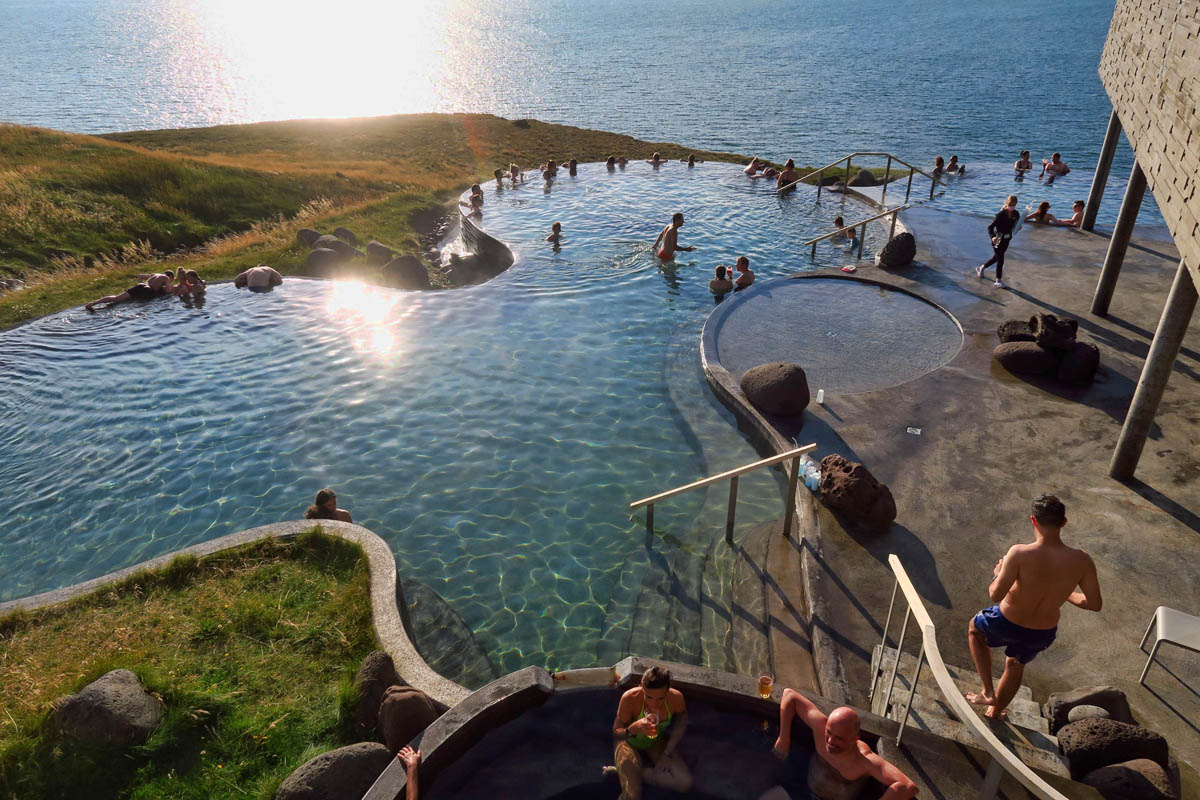 I detoured up to Husavik to visit the GeoSea Thermal Baths. Of all the soaking spots I visited in Iceland, this was my least favorite. It was the only place where I had to keep moving to maintain a comfortable distance from others, so I only stayed an hour. 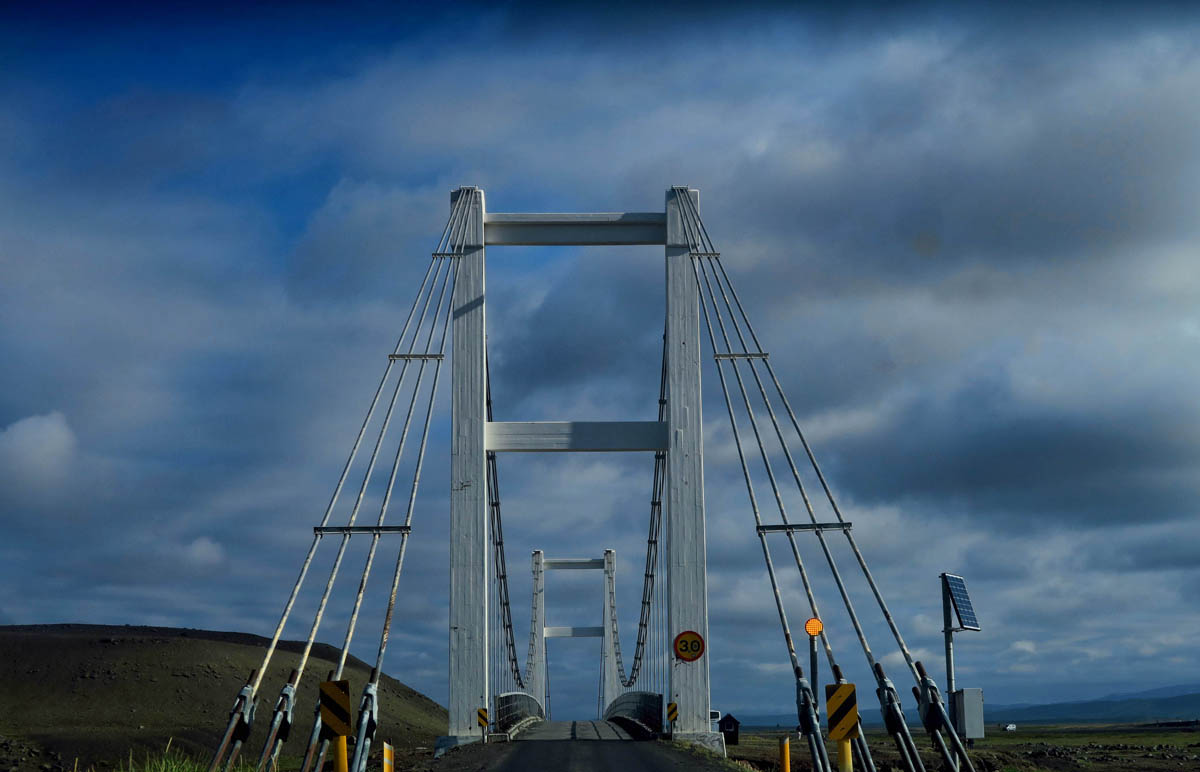 I based myself in the Lake Mývatn area for a couple of nights so I could get an early start to visit a couple of Iceland’s other most famous waterfalls, Dettifoss and Selfoss. 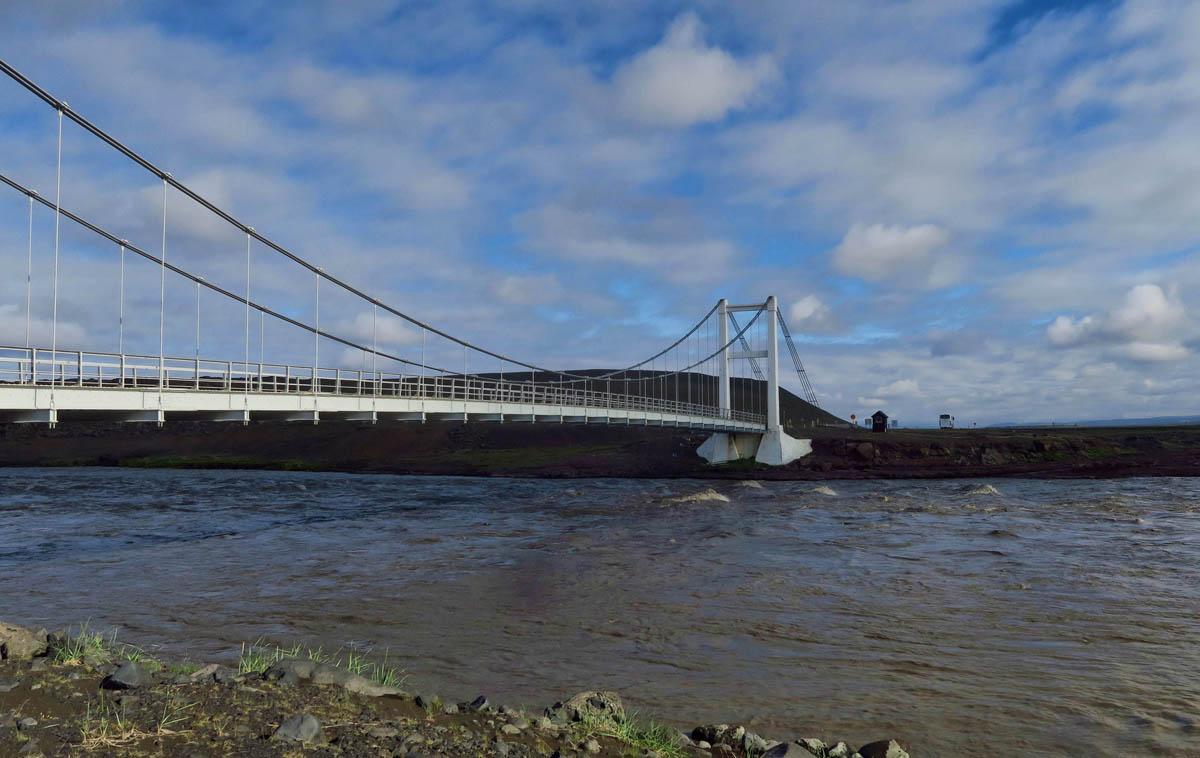 Dettifoss and Selfoss are located on the glacial river, Jökulsá á Fjöllum, the second-longest river in Iceland. The river originates in Vatnajökull glacier, Europe’s largest glacier. 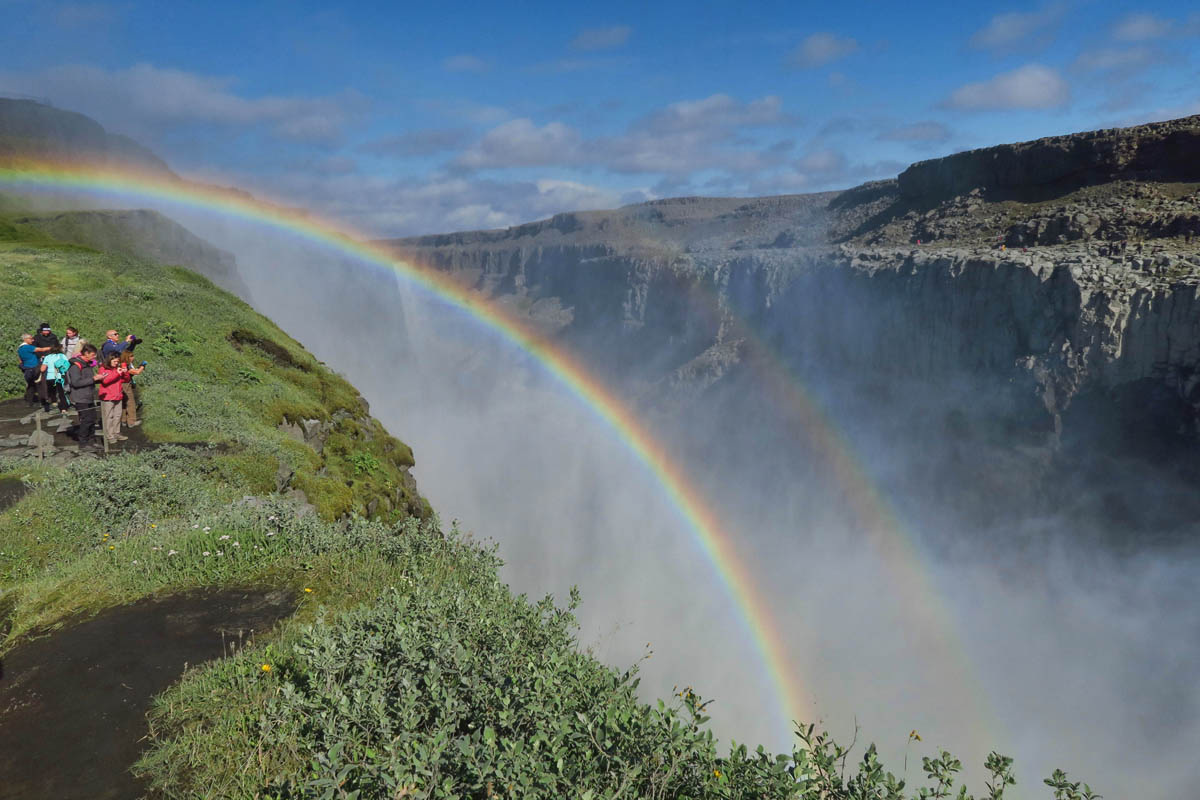 These two waterfalls are located within in Vatnajökull National Park, Iceland’s largest national park. Dettifoss, the largest of the two, is reputed to be the second most powerful waterfall in Europe after the Rhine Falls. Its 144 ft drop along its 330 ft breadth gives it a thunderous presence. 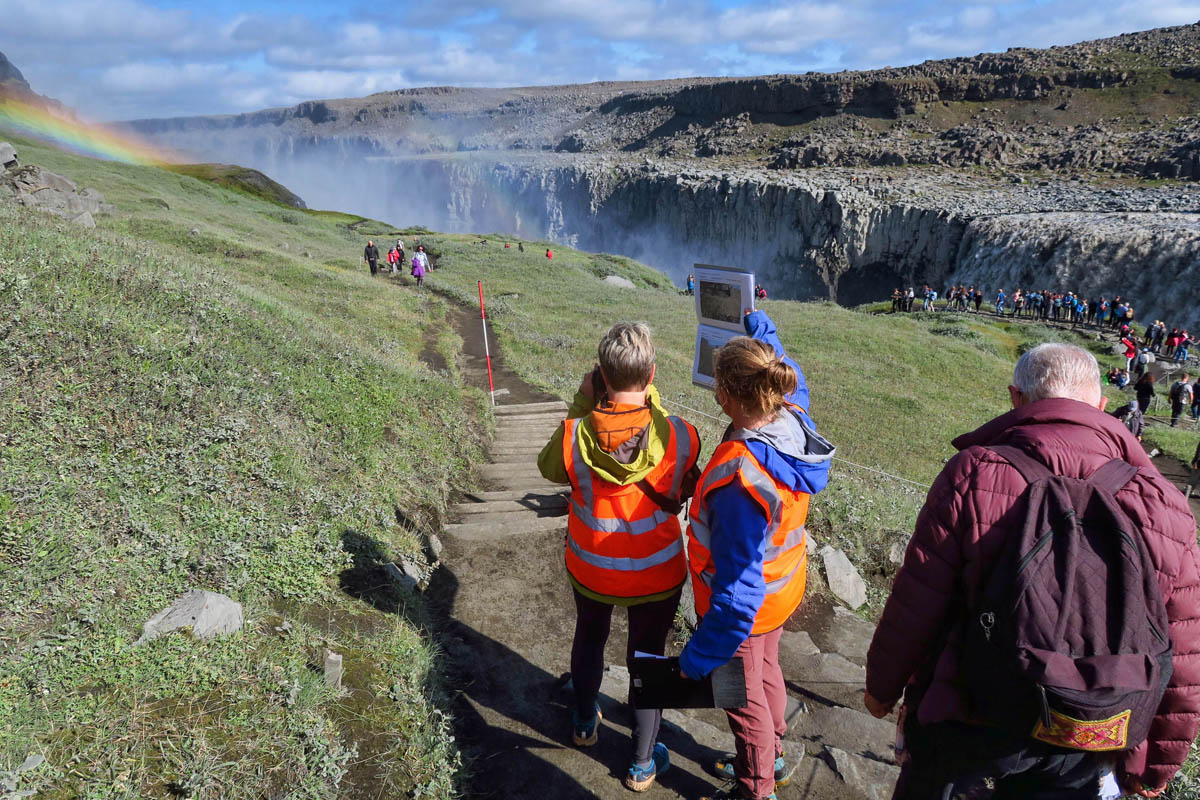 These two women in orange vests are with the Environmental Agency, here to measure the impact tourist traffic has on the flora. They place the stick in the same place each time, and photograph and measure how tourists have veered off the designated path, creating secondary trails like the one to the left of the main path. 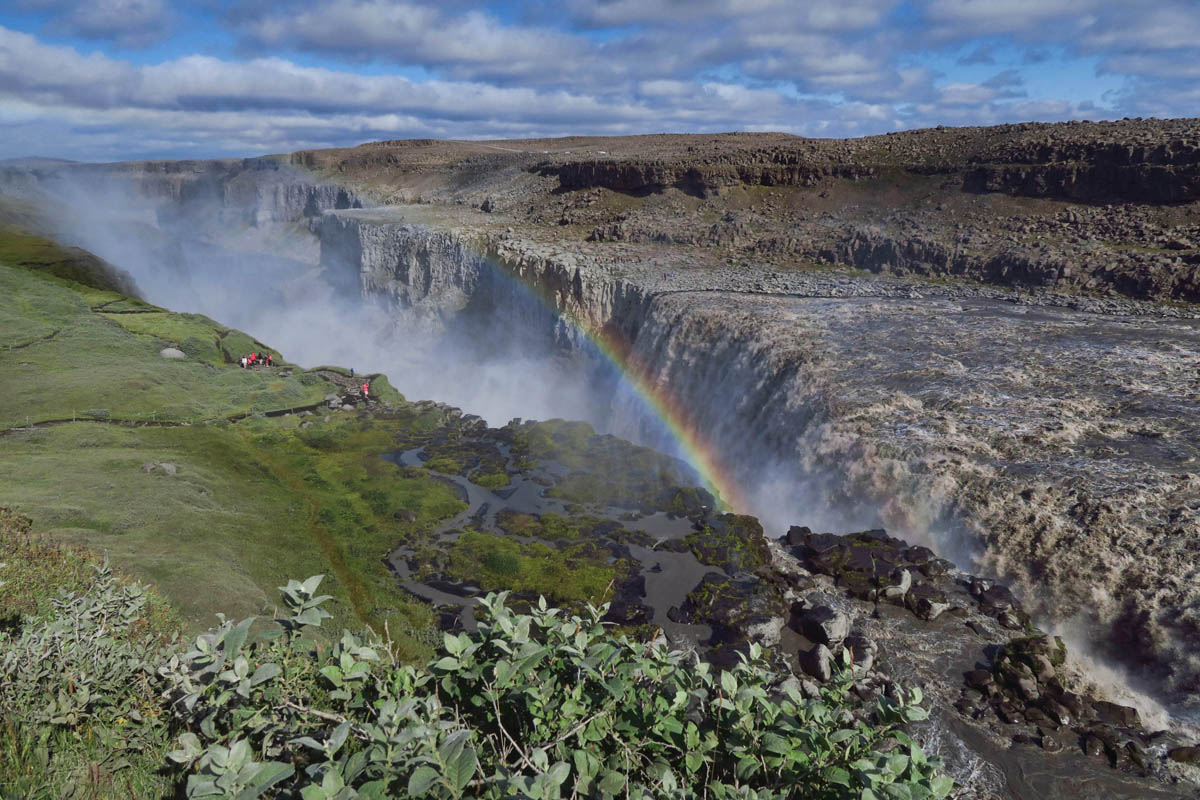 The glacial river looks muddy, but it is actually glacial silt. There are two sides you can access. The west side is more developed, but has quite a bit of spray. The east side is a rough gravel road, but allows one to get closer to the falls without getting soaked. 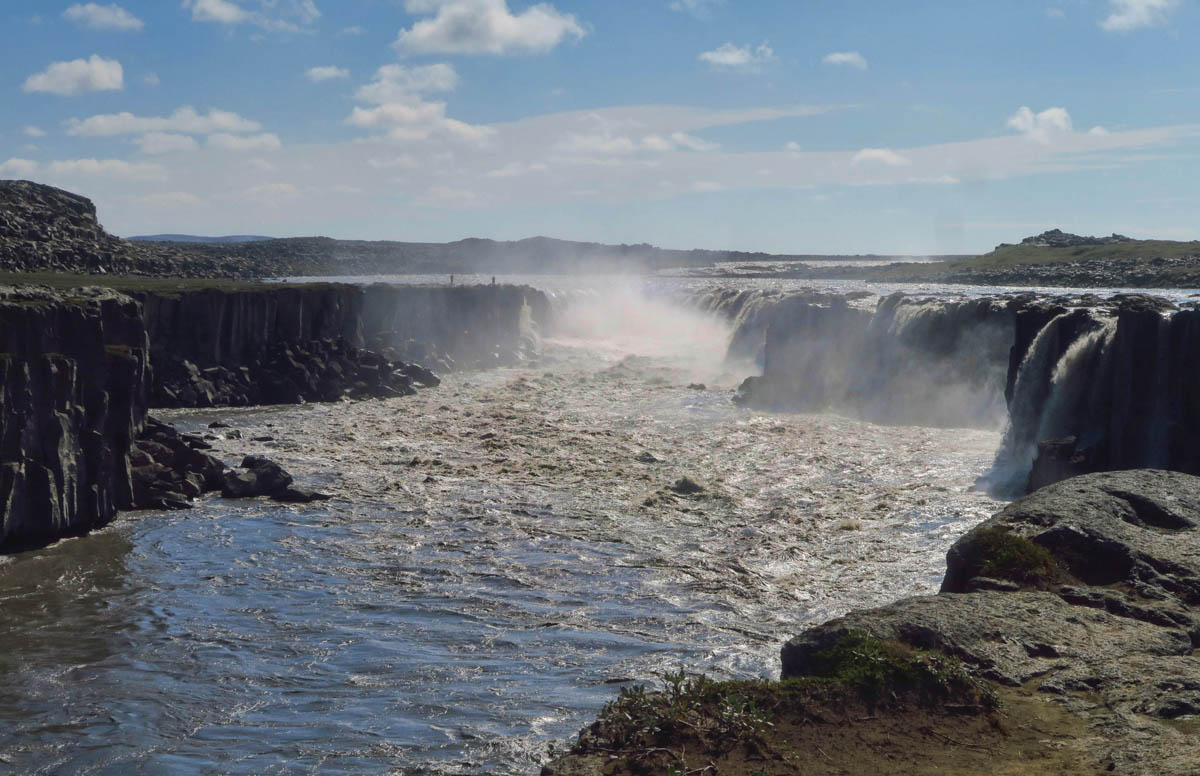 Just up the path from Dettifoss is another waterfall worth a visit, Selfoss. However only the east side up the gravel road allows close access to Selfoss. 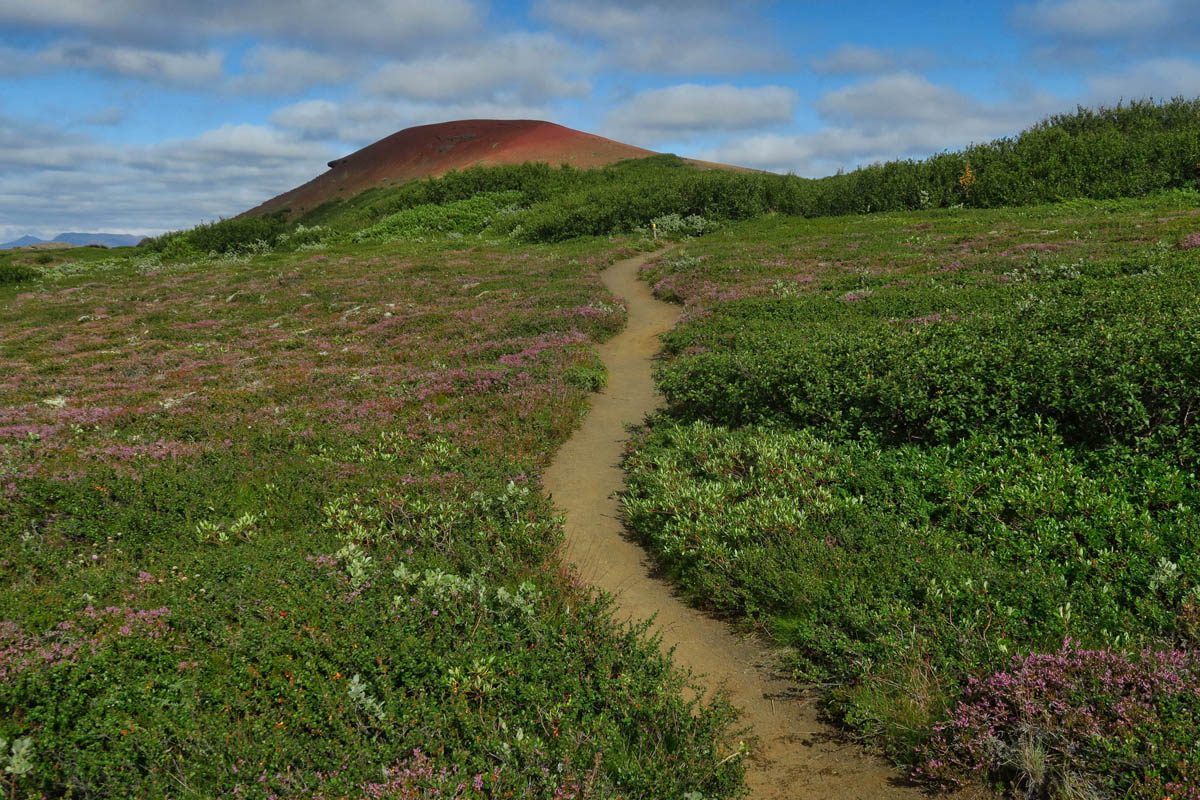 Just up the road half an hour from Dettifoss is Ásbyrgi Canyon. Hard to see in the photo, but the path is flanked by beautiful purple bushes. Heather maybe? 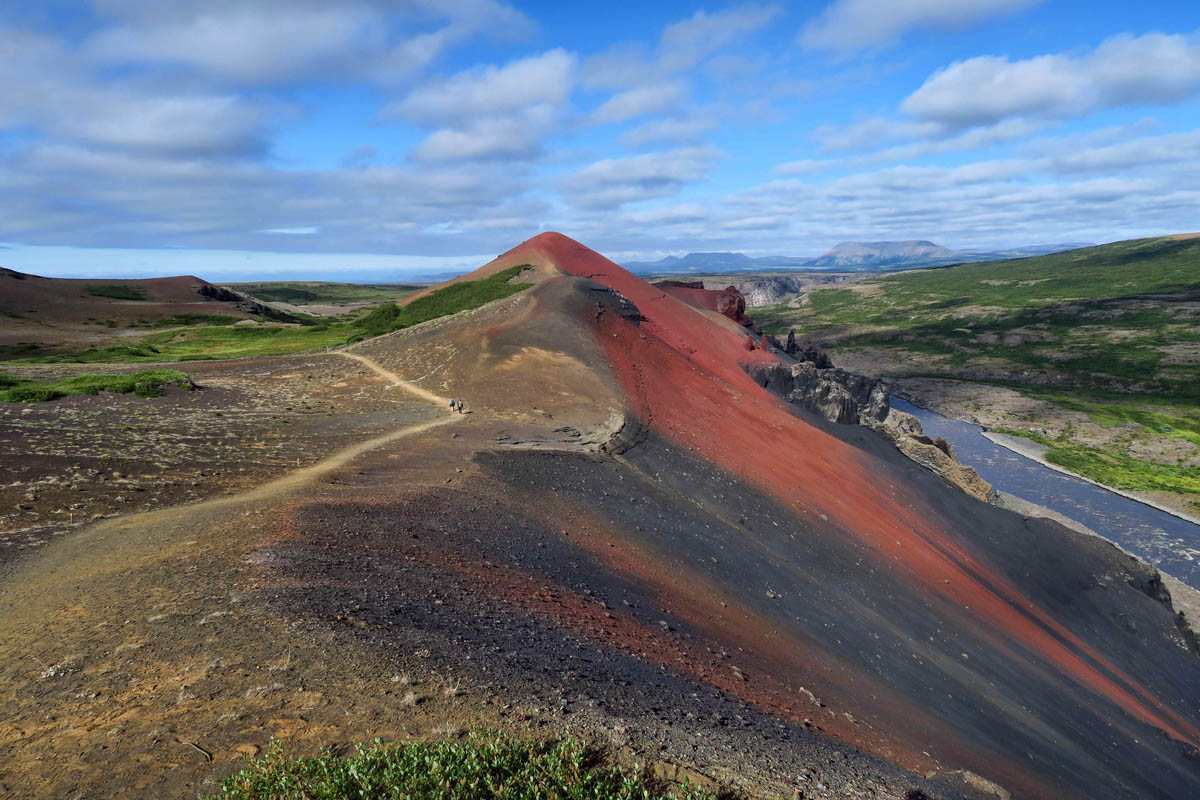 THere are several trails throughout the canyon, but I only have a couple of hours so I choose the Rauðhólar Circle, a 5 mile loop. 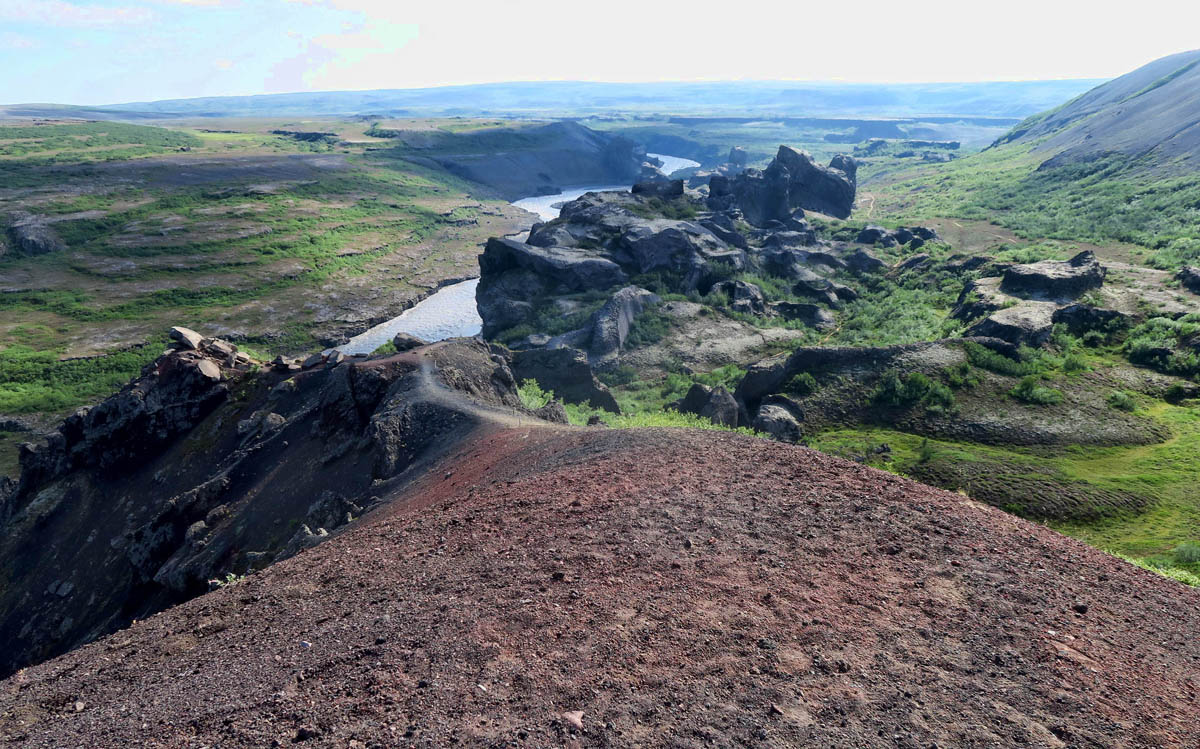 Lots of colorful rock formations overlooking the river below. 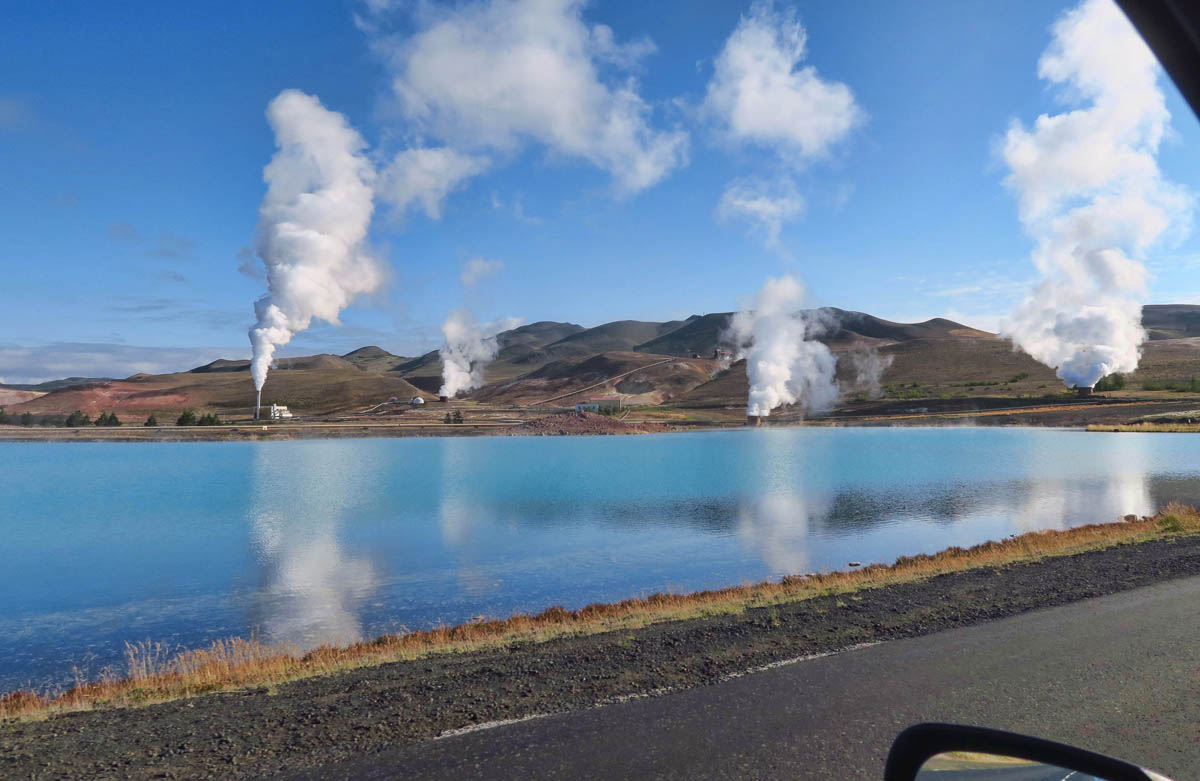 The whole Lake Mývatn area is a geothermal area with this power plant supplying geothermal energy throughout the area. 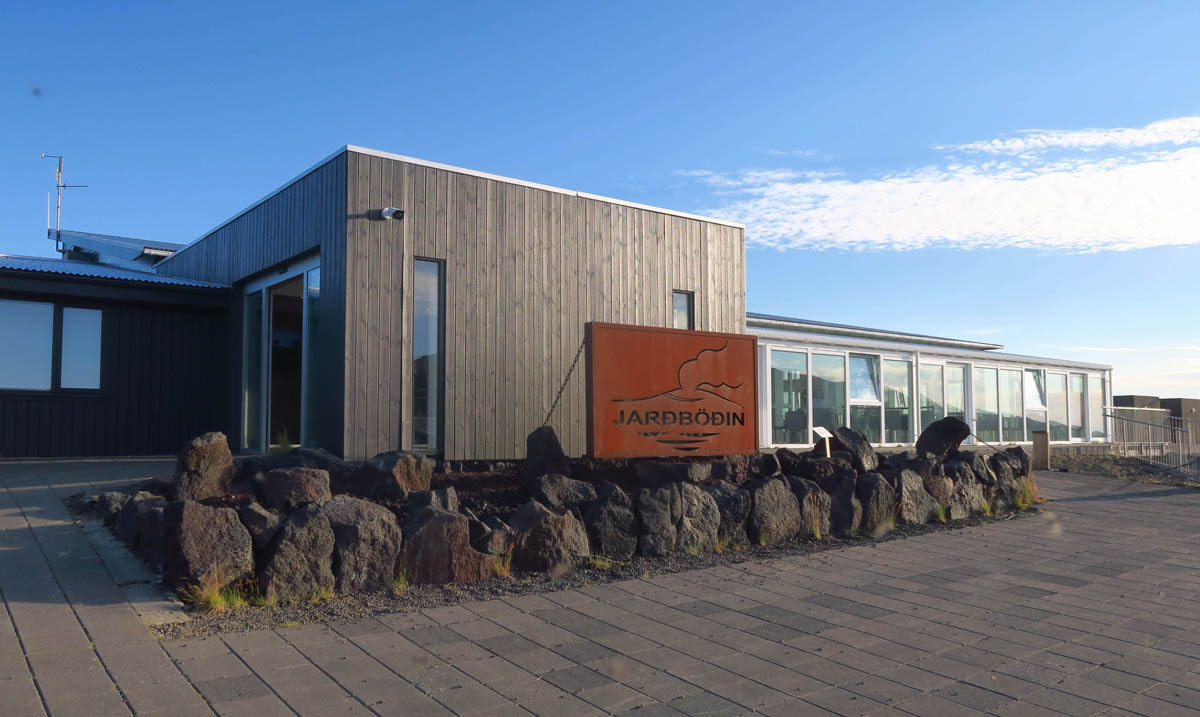 Another reason I based myself in the Lake Mývatn area was to visit the Mývatn Nature Baths. 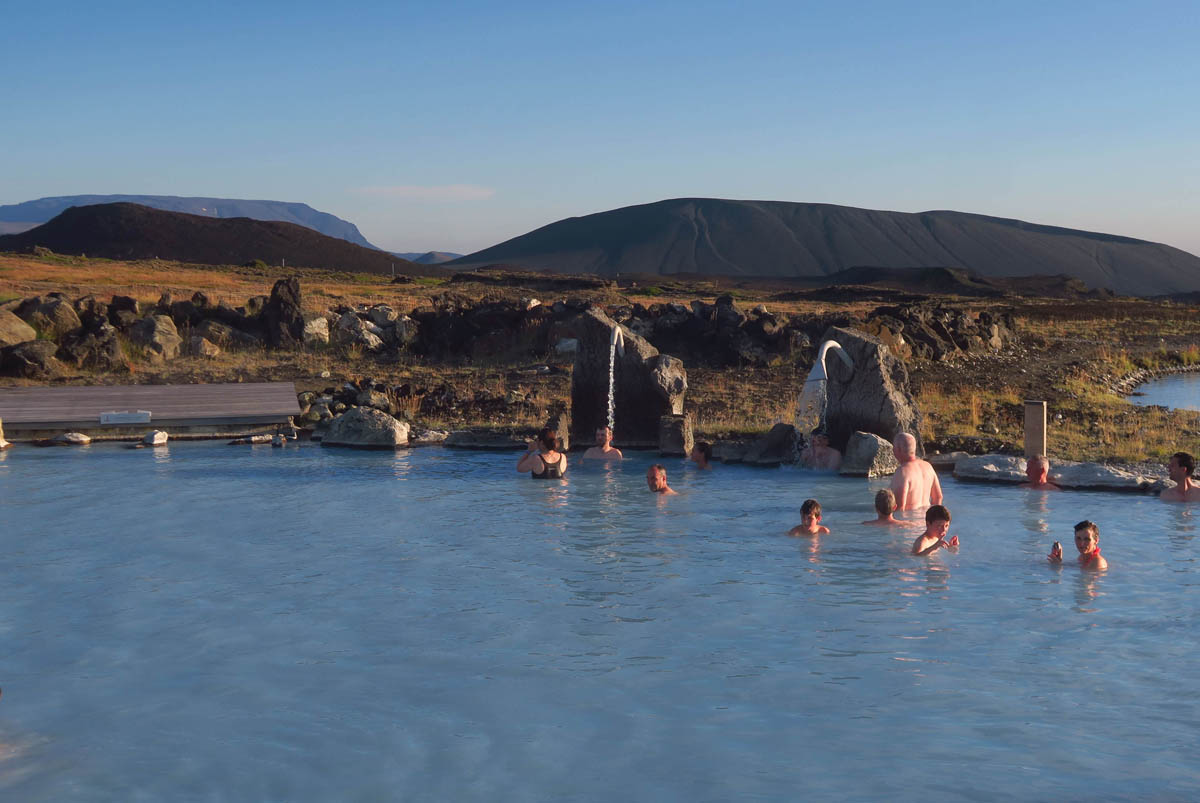 Mývatn Nature Baths is a man-made lagoon, and like the Blue Lagoon, it has the blue silty water. 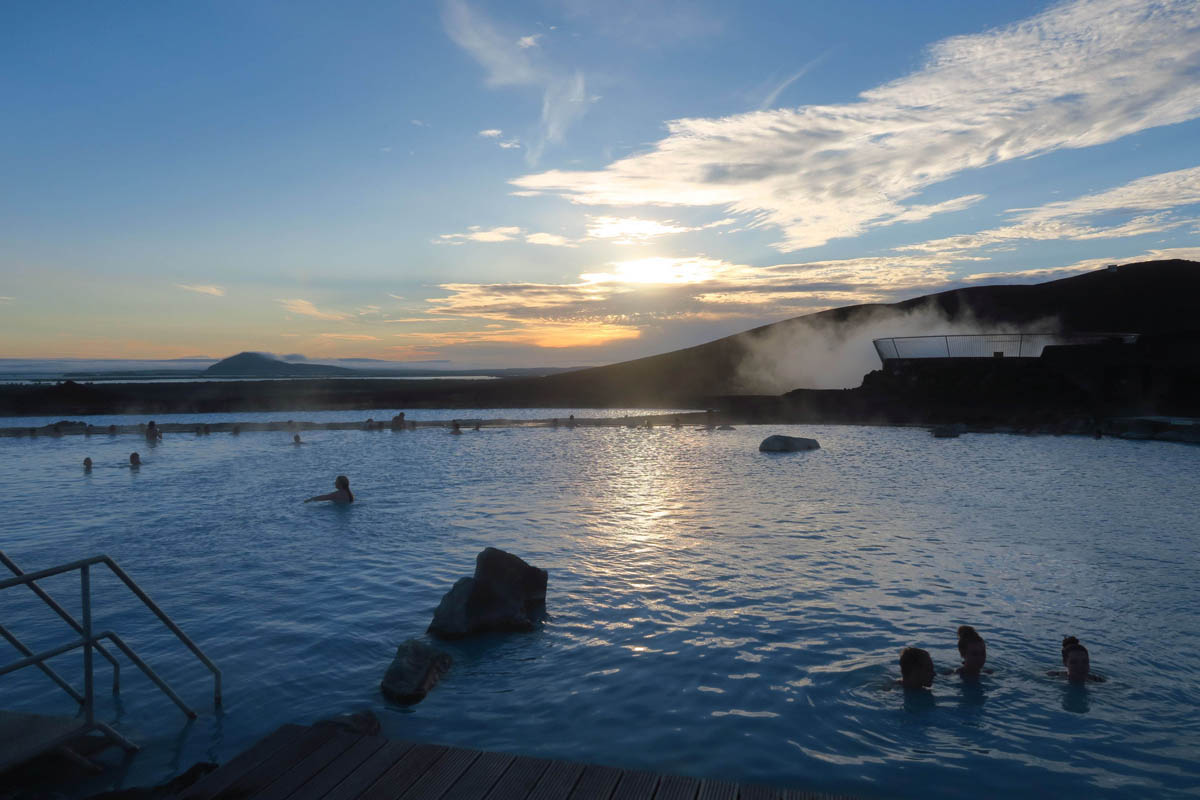 Similar to The Blue Lagoon, the water comes from the National Power Company´s bore hole. It comes out of the ground at a temperature of 130°C (266°F,) and empties into the lagoon at a temperature around 37°C (100°F.) 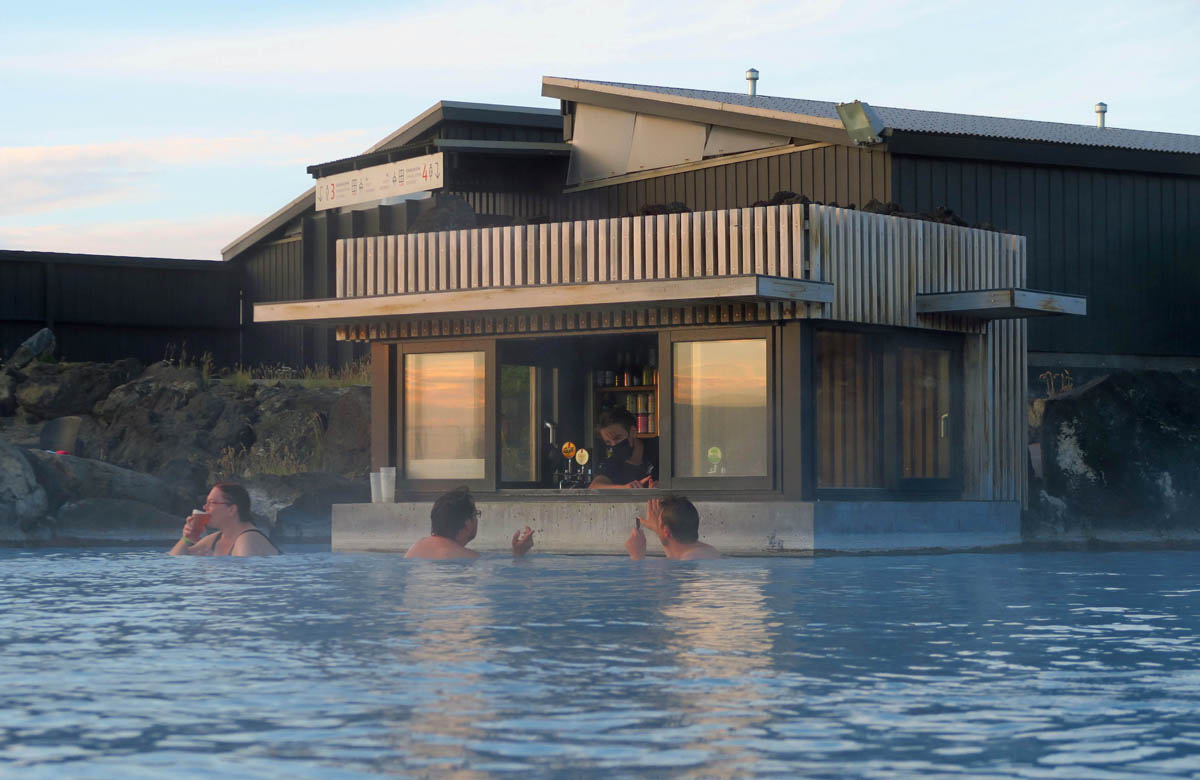 Mývatn Nature Baths also has a swim-up bar, with one drink included in the entry price. 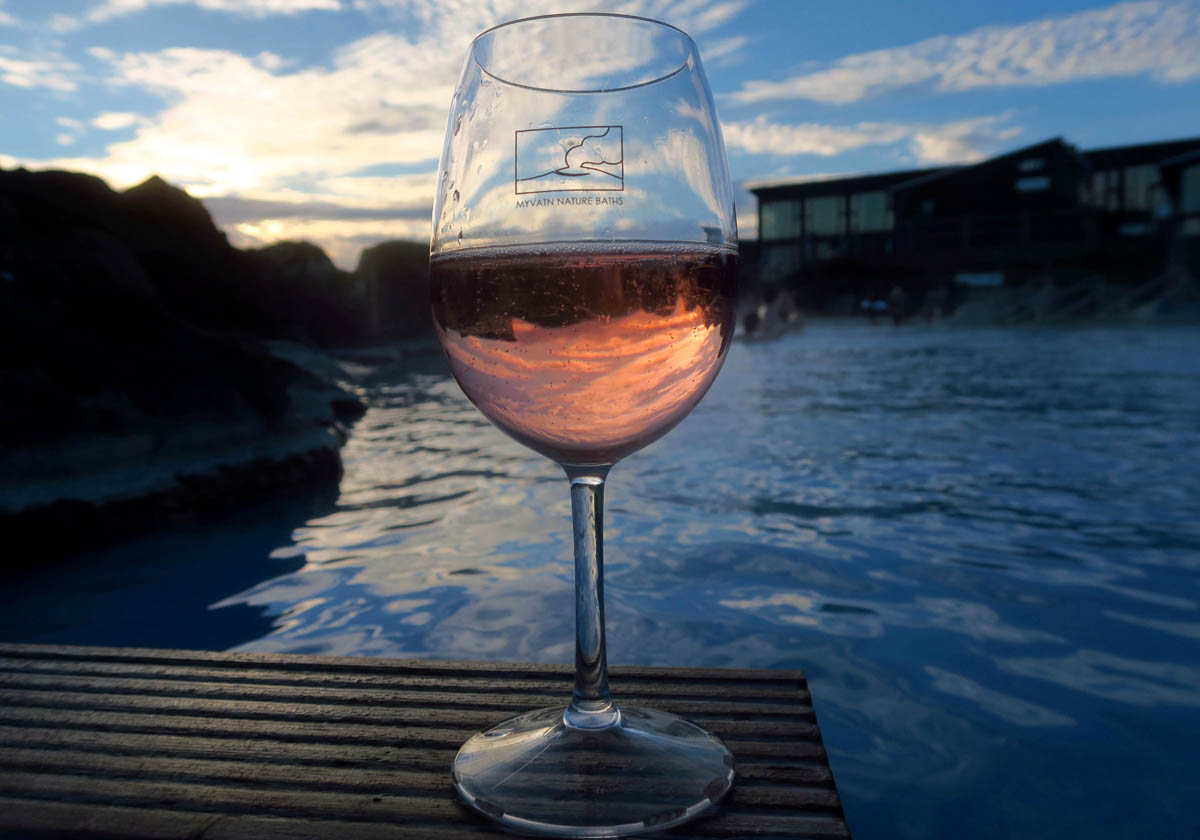 They should sell these nice plastic glasses as souvenirs, and I wouldn’t be tempted to smuggle one out in my towel. 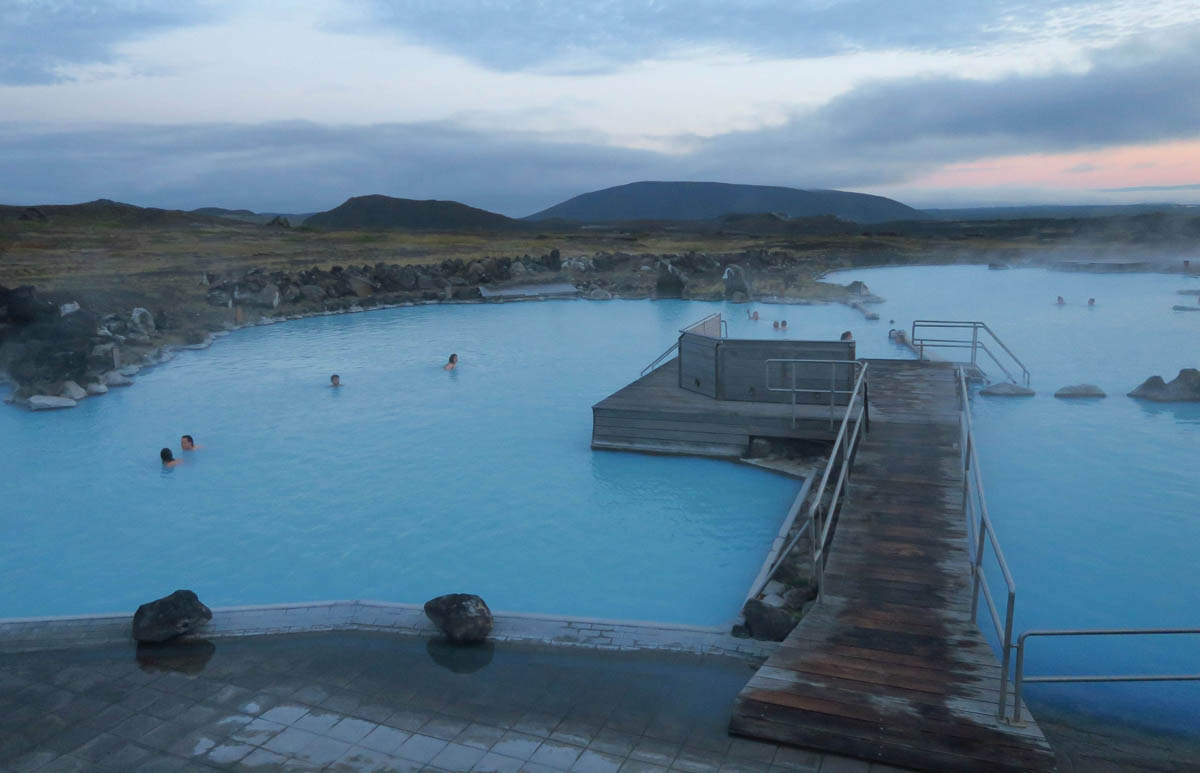 I had a coincidental encounter at Mývatn Nature Baths. I ran into Claudia from Holland, a fellow traveler from my Sudan tour in 2020. We chatted until near closing time. 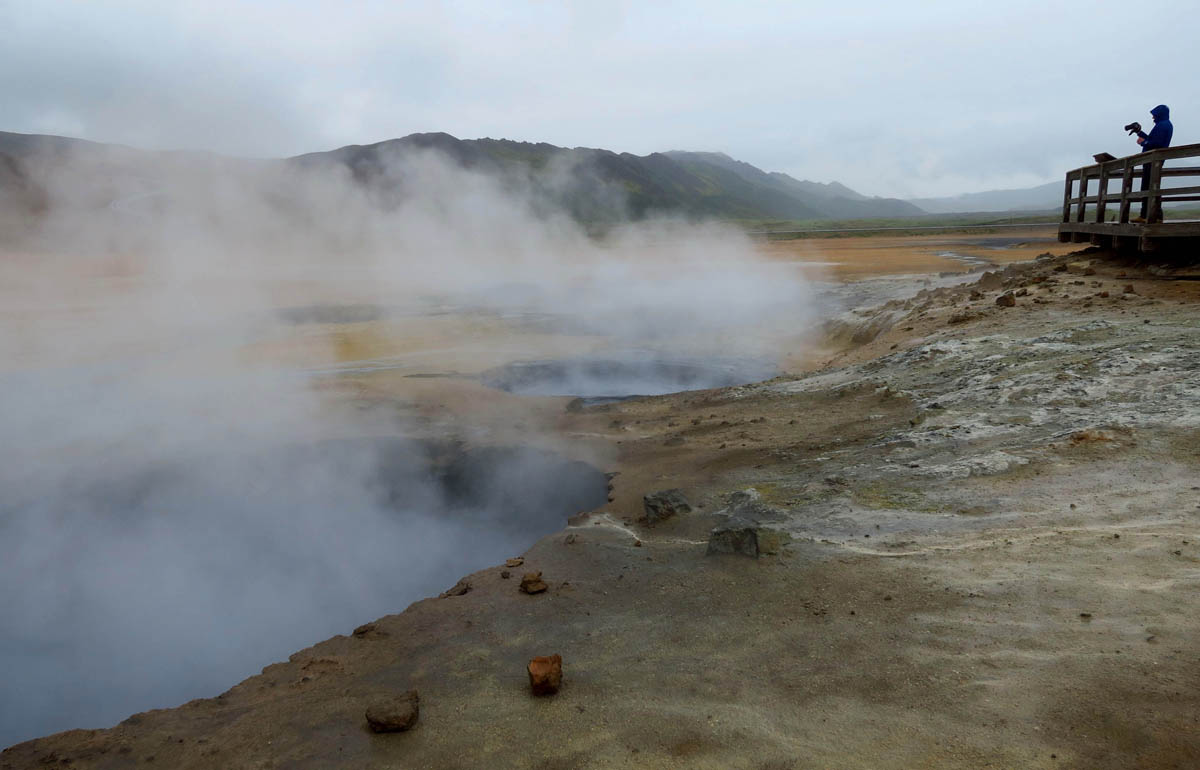 On the east side of Lake Mývatn is the Námafjall Geothermal Area, where the first thing that hits you when you step out of the van is the smell of rotten eggs. 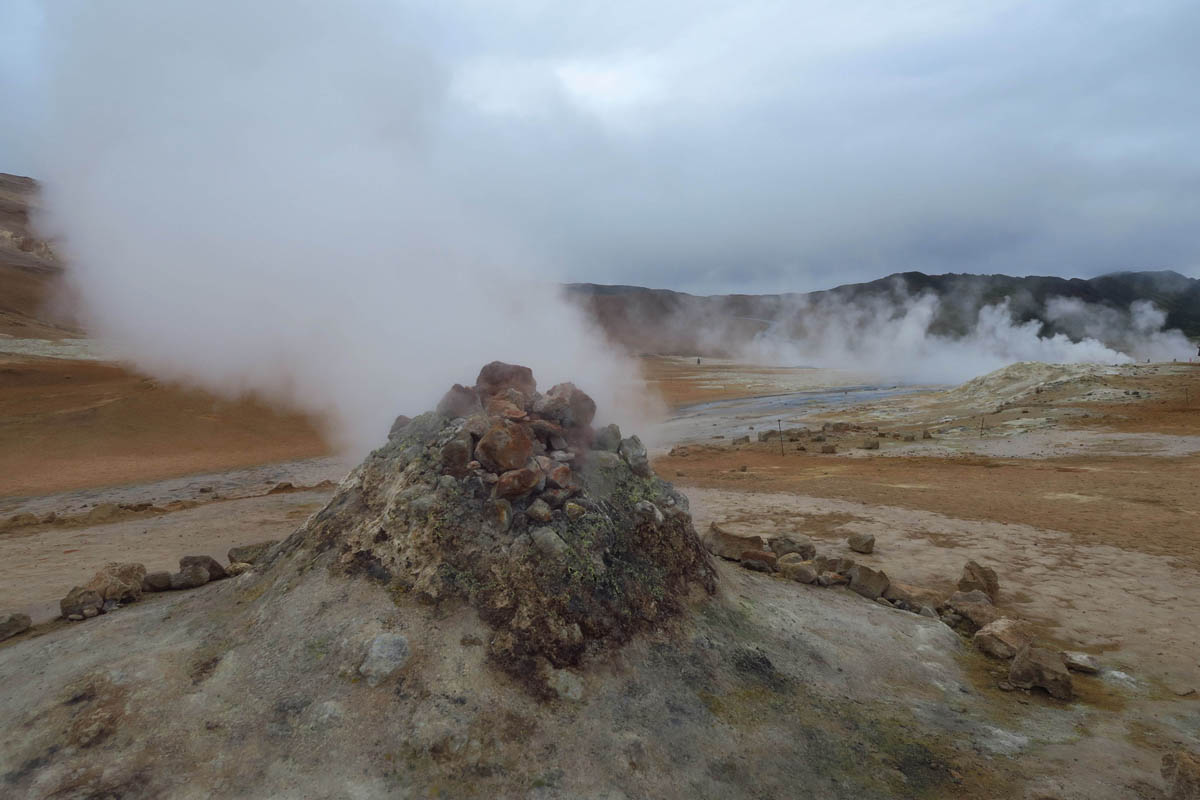 There is a little loop walk through the area that allows visitors to get close to the boiling mud pots, sulfur pits, and smoking fumaroles, 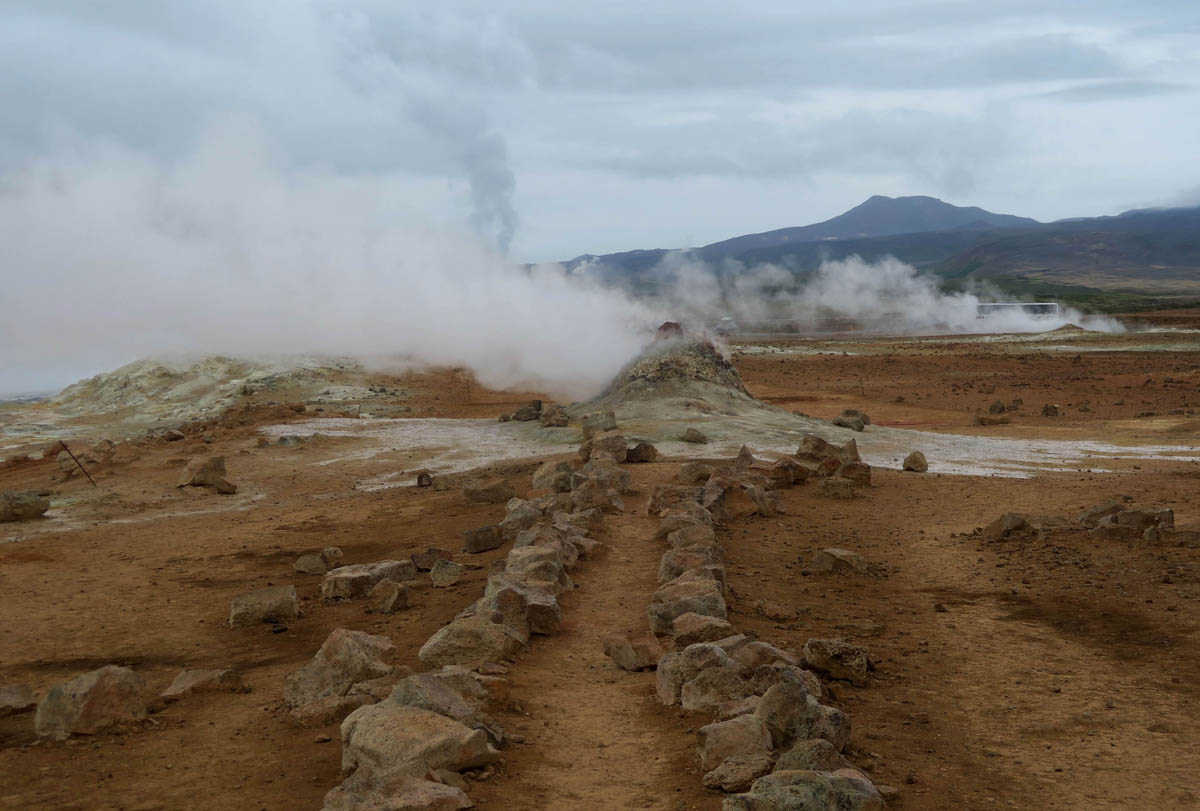 There are much fewer “safety restrictions” in Iceland. The ones that are there are to protect the environment more than to avoid personal injury lawyers. 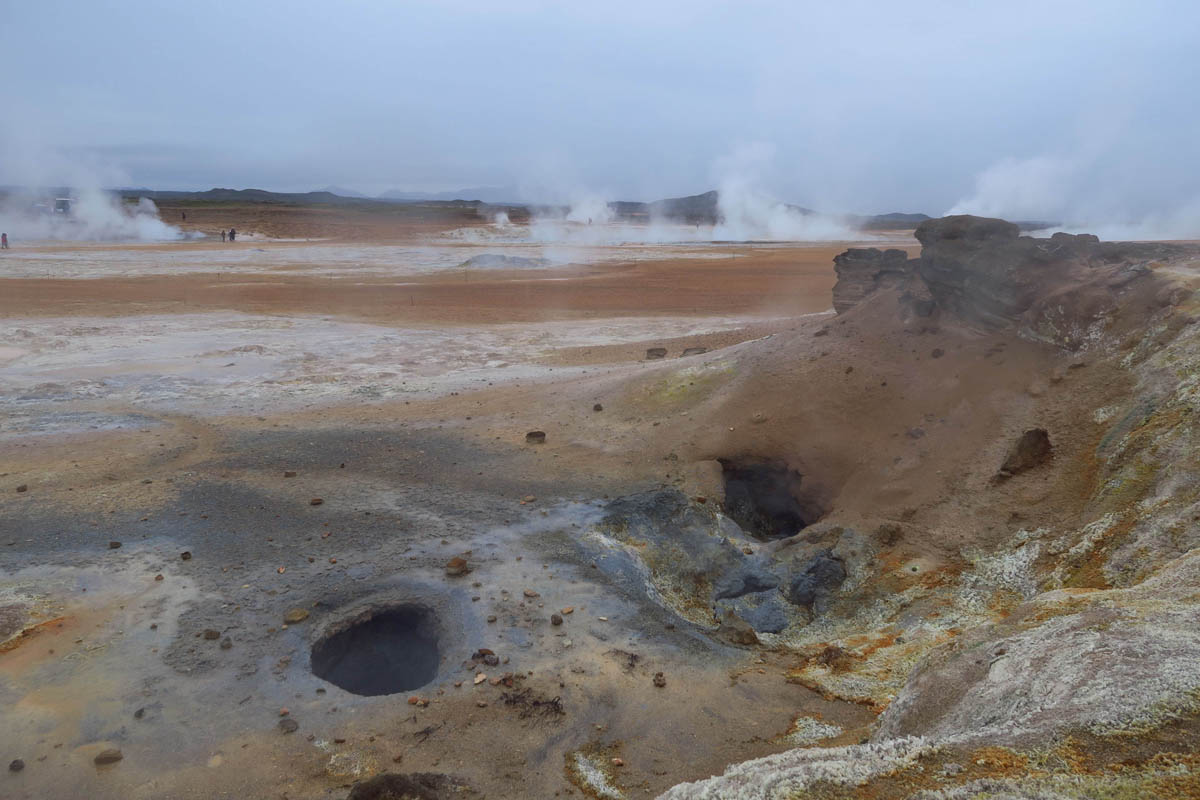 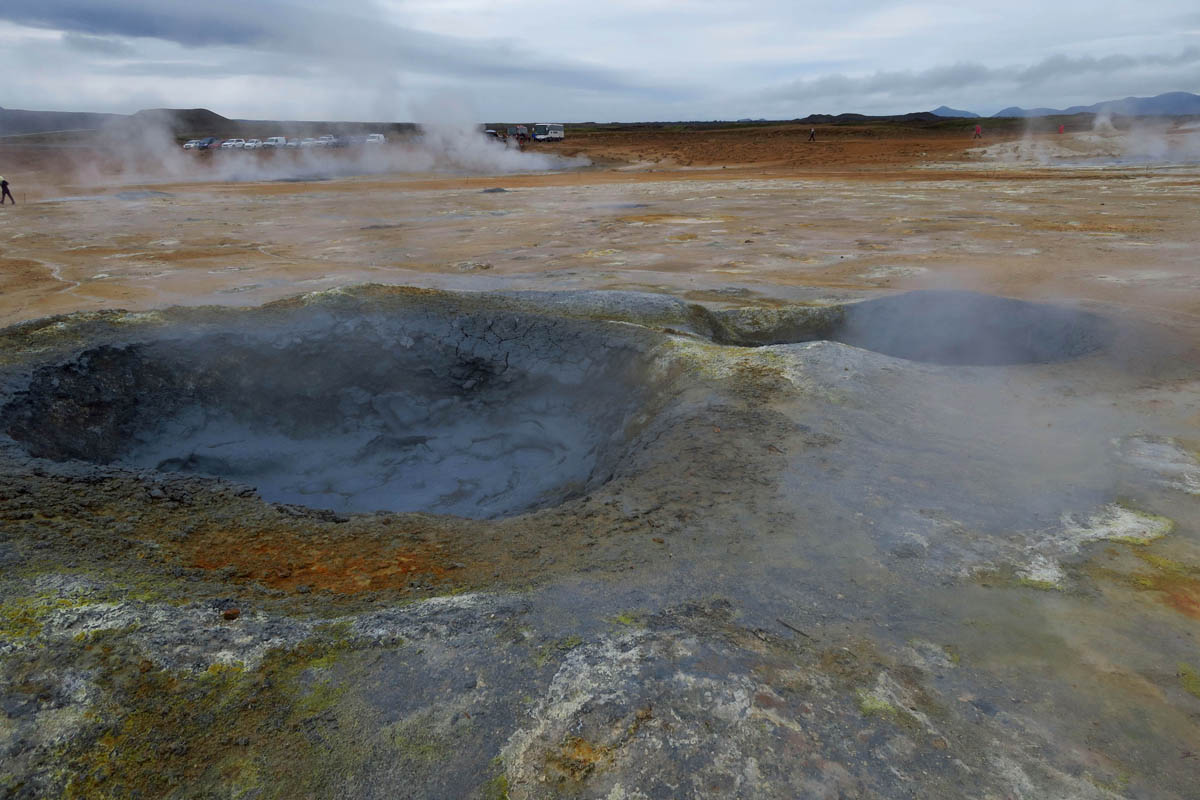 Sulfur was once mined in this area to be used in the making of gun powder. 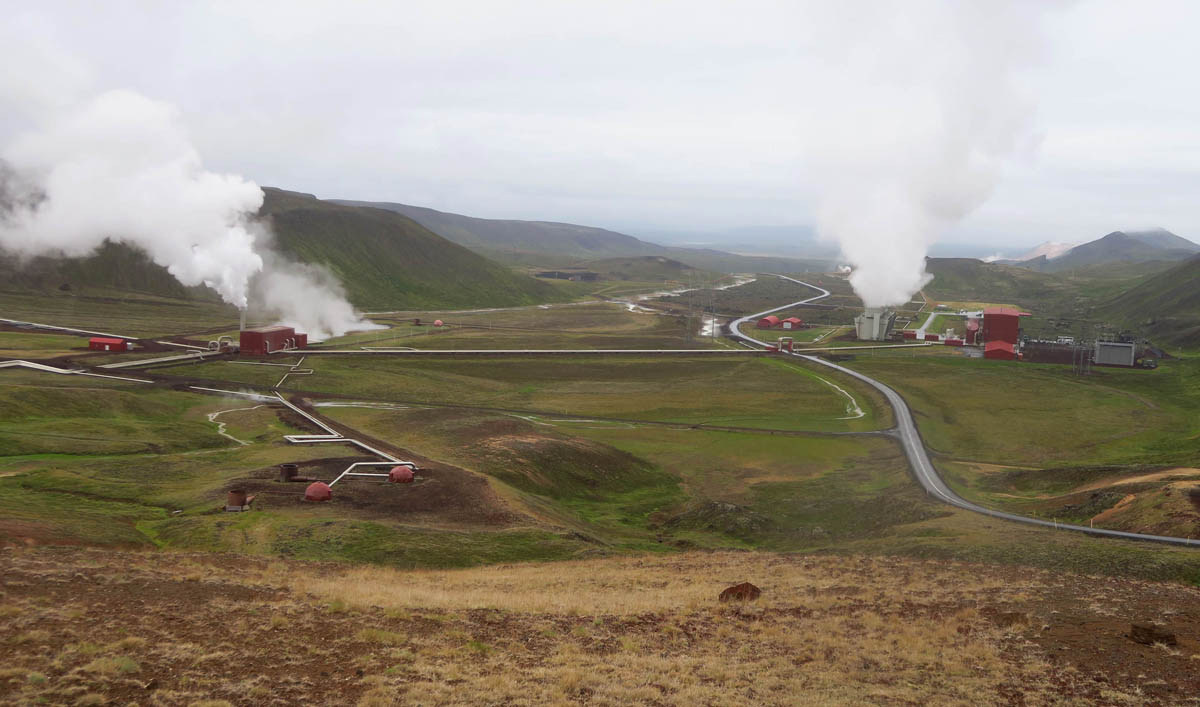 Moving on around the Diamond Circle, we come to Krafla, site of the Krafla Power Station, largest of the geothermal energy areas in the northeast. 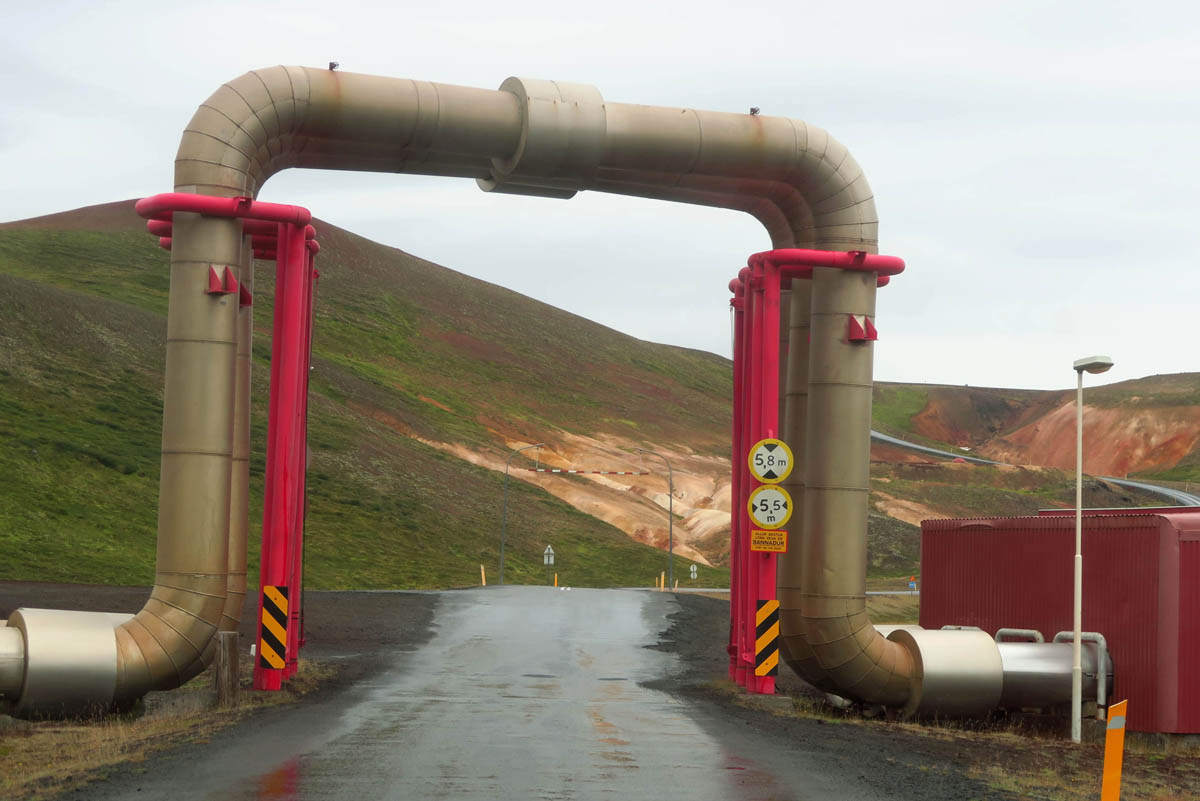 The Krafla Power Plant offers tours of their geothermal plant. I wish I had taken the time, as I would love to understand why they pipe the hot water over the road and not under… 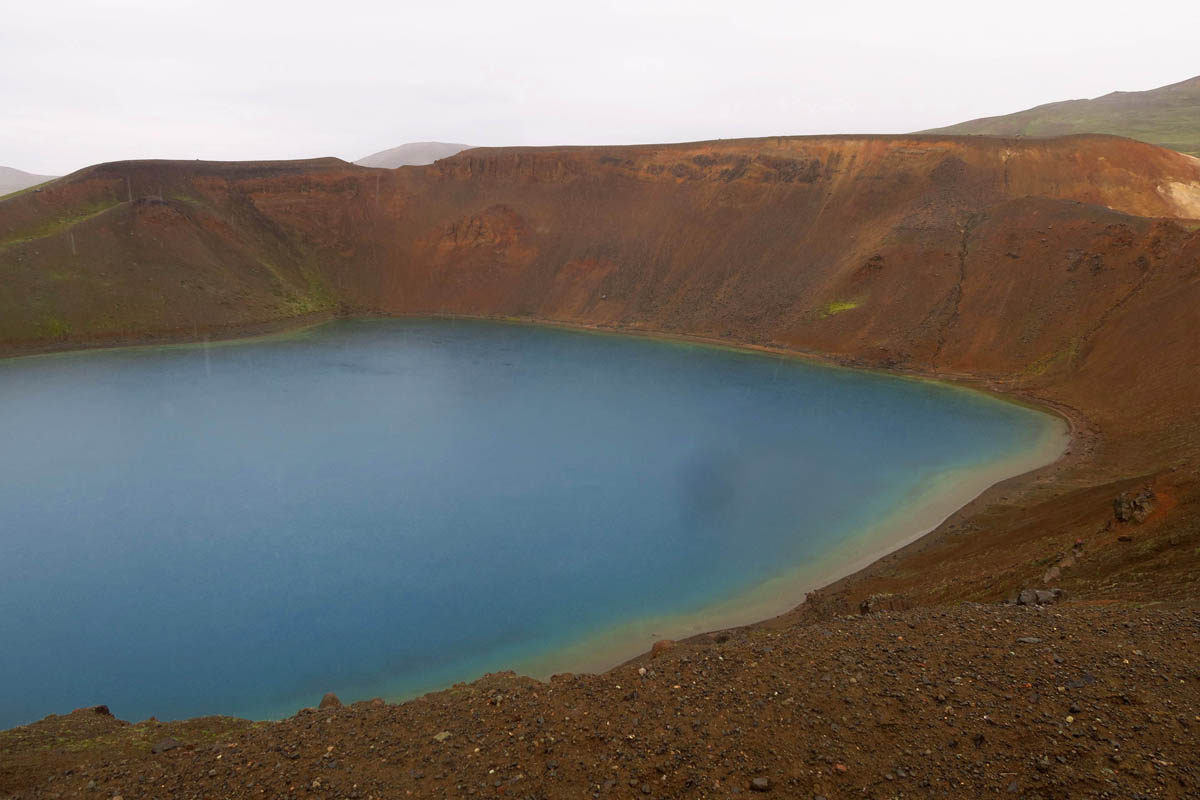 Víti (the word “Viti” means “hell) was formed in 1724 by a massive eruption in the Krafla volcanic region. The event lasted for five years with jets of lava shooting into the sky. It left the crater which is about 1,000ft across, too wide to fit in my camera lens from the crater rim. (Sadly, my good weather streak has ended this day, so the usual stunning aquamarine colors are muted.) 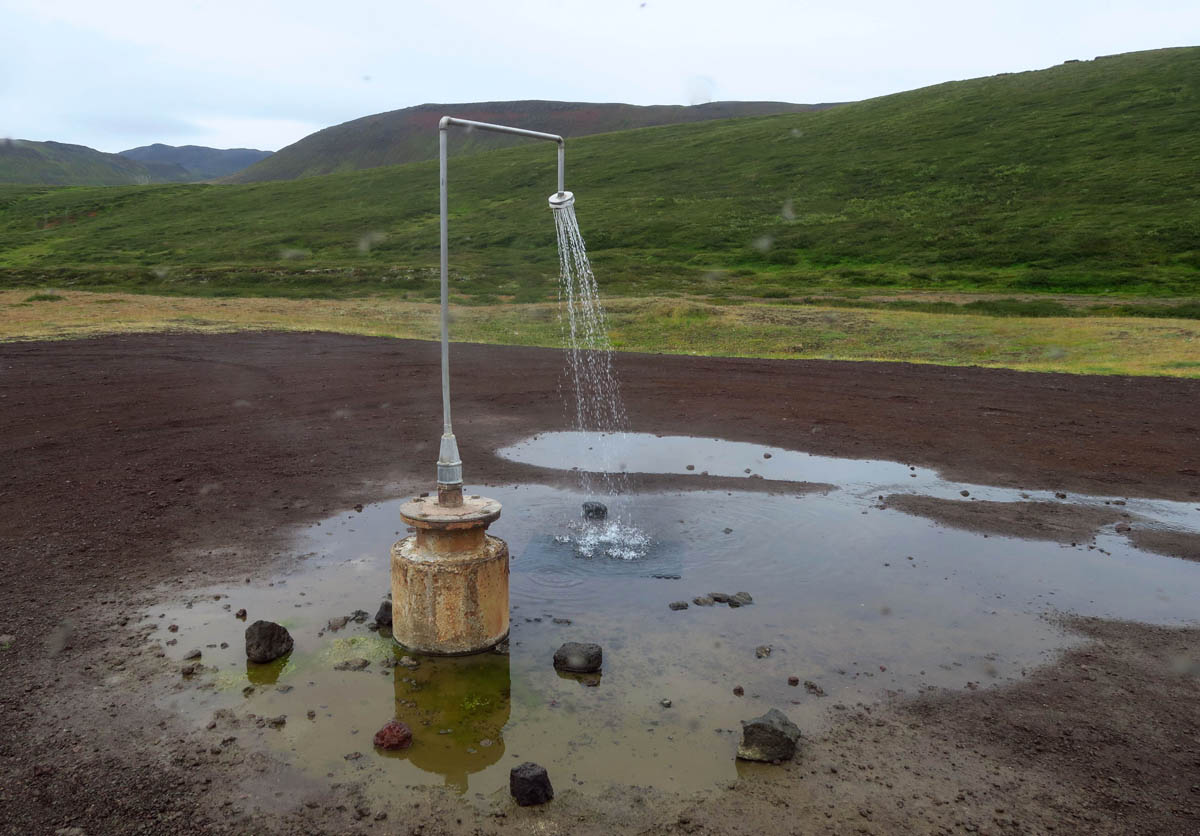 Had this perpetual shower not been located right alongside the road to the Krafla Power Plant, I might have been tempted for a quick hot shower.

Campground on this section: Hlíð Camping, 5km from Nature Baths

6 thoughts on “Chasing Waterfalls around the Diamond Circle”