Driving Iceland’s Ring Road, aka Route 1, is every bit as beautiful as I anticipated, though I must say not as isolated as I anticipated. Yes, there are long stretches where I have the road to myself, but it’s rarely more than 10 minutes until I meet another car, or one is overtaking. While Iceland appears to be having quite the tourism boom, sources say it’s still significantly less than what it was back in 2017 and 2018, peak years. Tough to imagine.

As long as roads are paved, they are in pretty good shape. There is no shoulder, though. Zero! So it makes “rubber-necking” (as Mom would say) a bit risky for the driver. Yes, there are places to pull over, but not enough to equate with the abundance of photo opportunities! There are quite a few roadside parks in lovely areas with picnic tables, but just not many pull-outs for a quick photo stop. So I have to shoot on the move. People sometimes ask me why I am “old school,” still using a point & shoot camera, when the cameras on the smart phones take such good quality photos these days. But I challenge anyone to unlock their iphone, launch the camera app, and snap a picture one-handed while never taking their eyes off the road or one hand off the wheel. This is not only possible with a “point & shoot” camera like my Canon, it’s easy.

The speed limit throughout Iceland is consistent. Ninety kilometers is tops on the highway (55mph) regardless of how remote the road. Always slow down to 70 km (43 mph) through construction zones. Iceland has a LOT of single lane bridges, and the speed limit approaching and crossing the bridges is 50km (30mph,) as is the approach into a town or village. Once you reach the village, you had better be doing 35km (20mph,) or lights are going to start flashing! But this is consistent throughout the entire country, so you always know what to expect.

While it’s rare to see a police car, Iceland takes speeding seriously. There are speed cameras, and the fines are steep! There’s no talking your way out of it. If you are caught on camera, there will be a fine billed to your rental company, along with their handling fees. However, there is always a blue sign with a white camera on it right before you reach the speed camera, so it’s easy to avoid if one pays attention.

There are lots of potential hazards in the road. Sheep are in abundance, and seem to enjoy standing in the middle of the road. Unlike horses in Iceland, sheep are “free range.” And even though they may head for the ditch when they see you coming, do NOT take them at their word! It’s likely a fake!

But the most terrifying thing I have encountered while driving Iceland’s Ring Road is the one way tunnels! Yes, there are pull-outs, but still there is nothing more unnerving while behind the wheel than to see “light at the end of the tunnel” when it’s a one way!

The way the right of way works in a one-lane tunnel is a sign posted at the entrance indicating two opposing arrows. If your directional arrow pointing ahead is white, you have the right of way through the tunnel. If your directional arrow pointing ahead is red, you must watch for oncoming lights, and pull into one of the turn-outs indicated by a sign posted with the letter “M” and wait for the oncoming car to pass.

I knew the drill, and to watch for the small sign (no bigger than a yellow, diamond-shaped caution sign) upon entering the tunnel. I had the right of way according to the white arrow. But a car coming from the opposite direction was barreling on through, waiting for no one. I had no place to pull over, but he was coming anyway. So I just stopped, dead in my tracks, hoping he would realize the err of his ways and back up. Somehow, he squeezed around me without incident….in a one-lane tunnel, no less. My guess is, a carload of tourists who didn’t realize there was a right of way protocol in a one-lane tunnel. My knees shook for an hour!

There are a lot of road shots in this post, but then that’s what the Ring Road is all about! 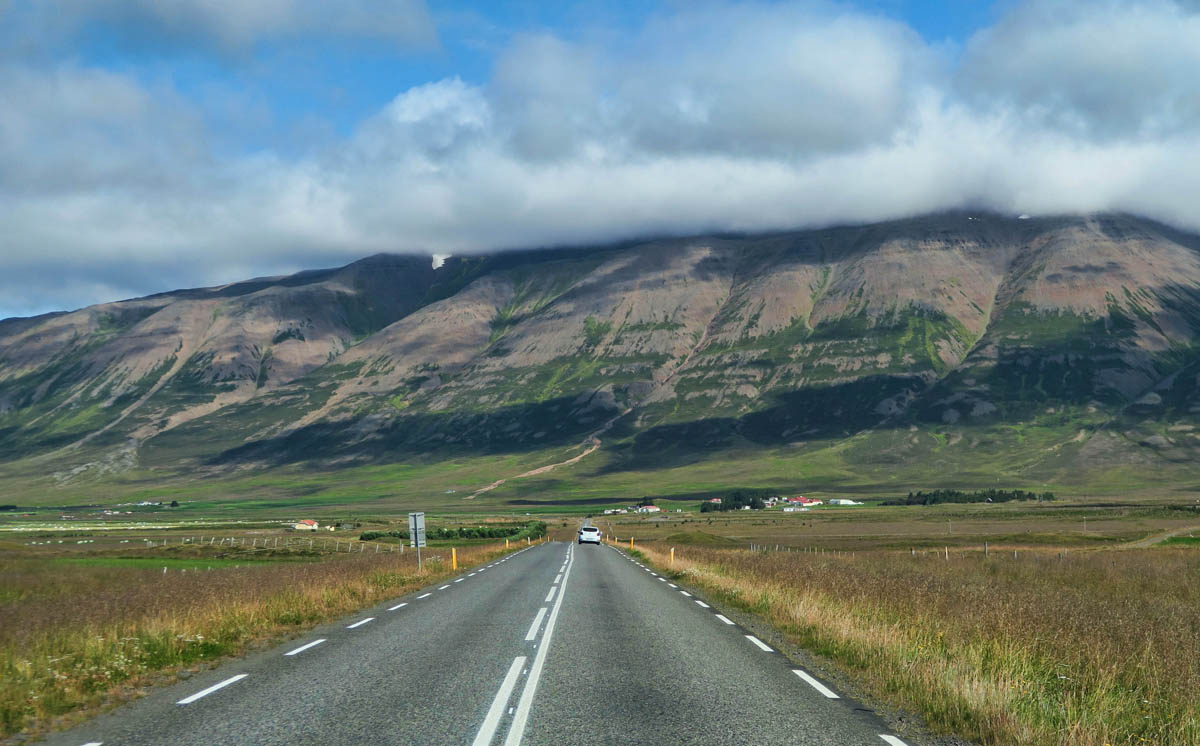 The Ring Road, aka Route 1, offers scenic vistas at every turn. 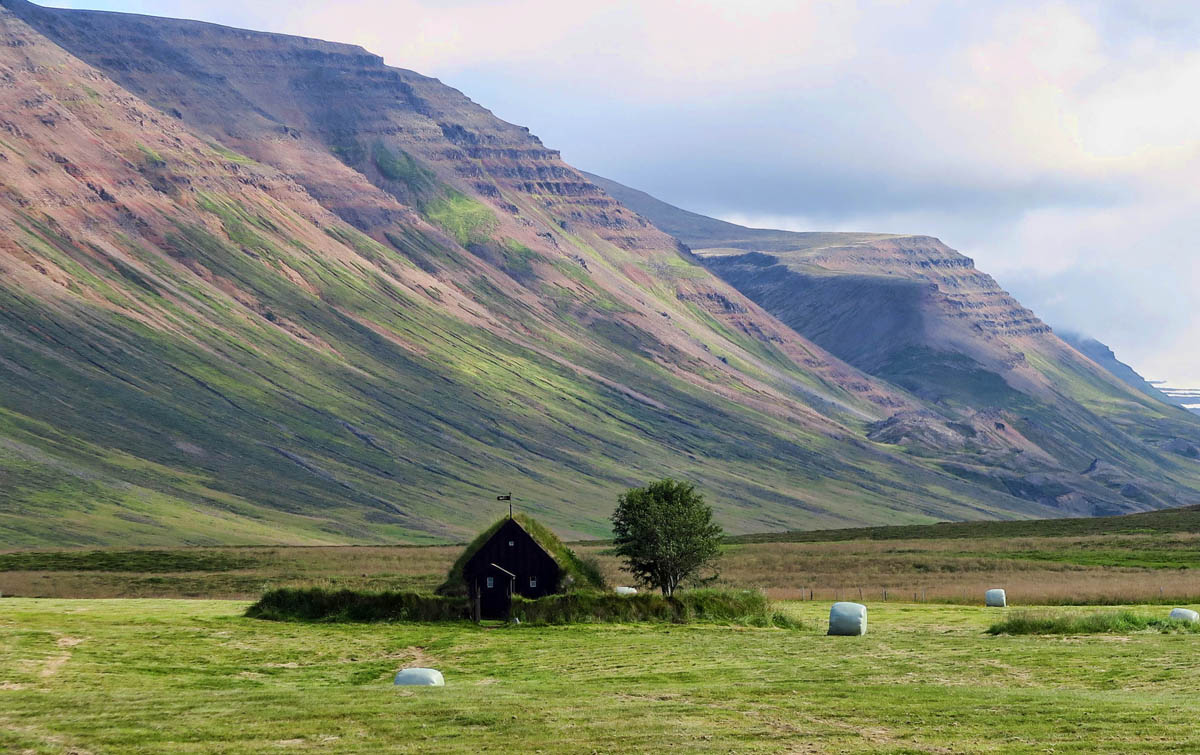 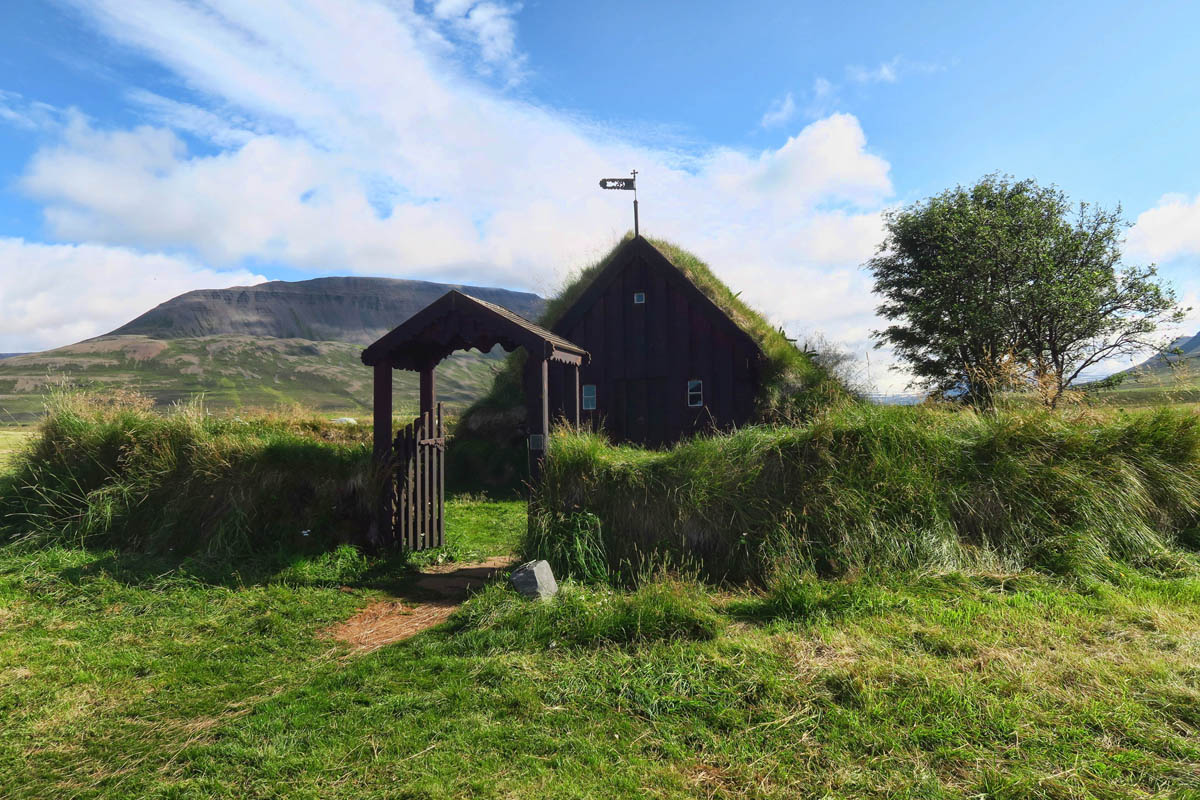 It is thought to have been constructed by a well known wood carver, due to the ornate carvings inside. Unfortunately, it is closed to the public, but some of the works can be seen through the windows and on the exterior door. 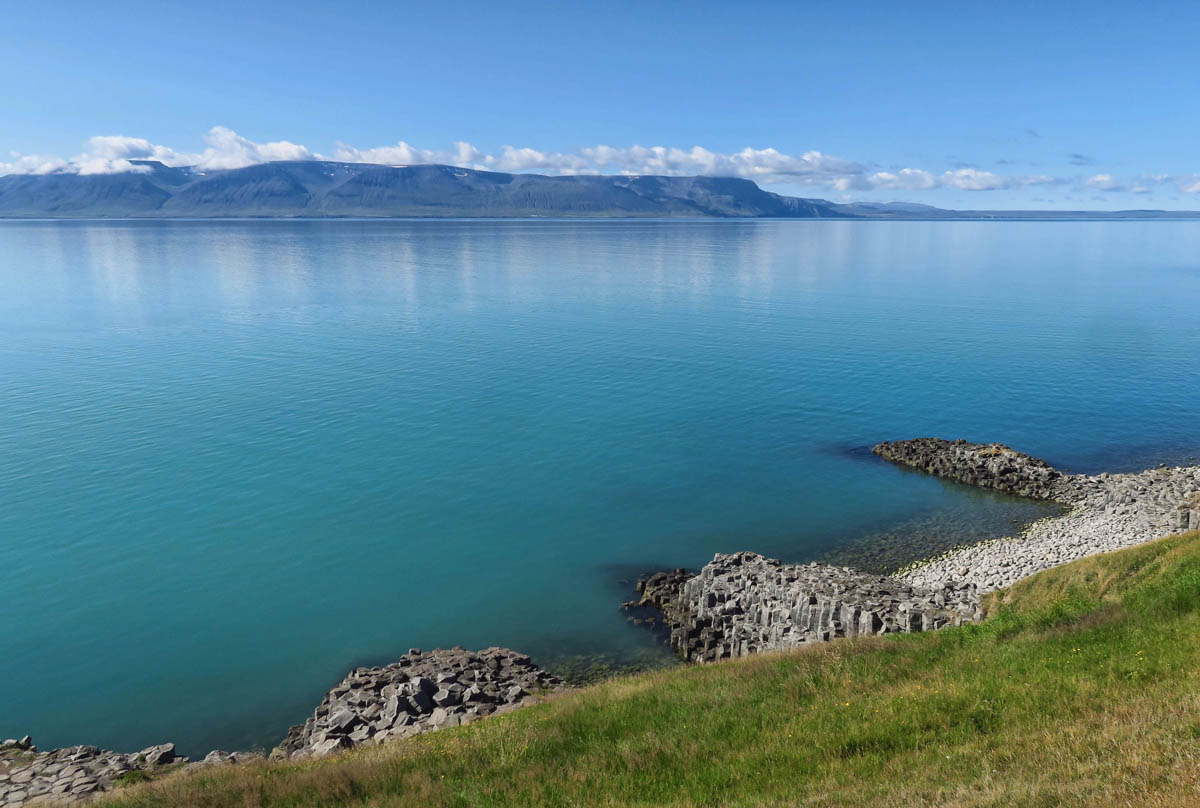 I am veering off Route 1, the Ring Road for a bit to drive some of the scenic roads along the northern fjords. 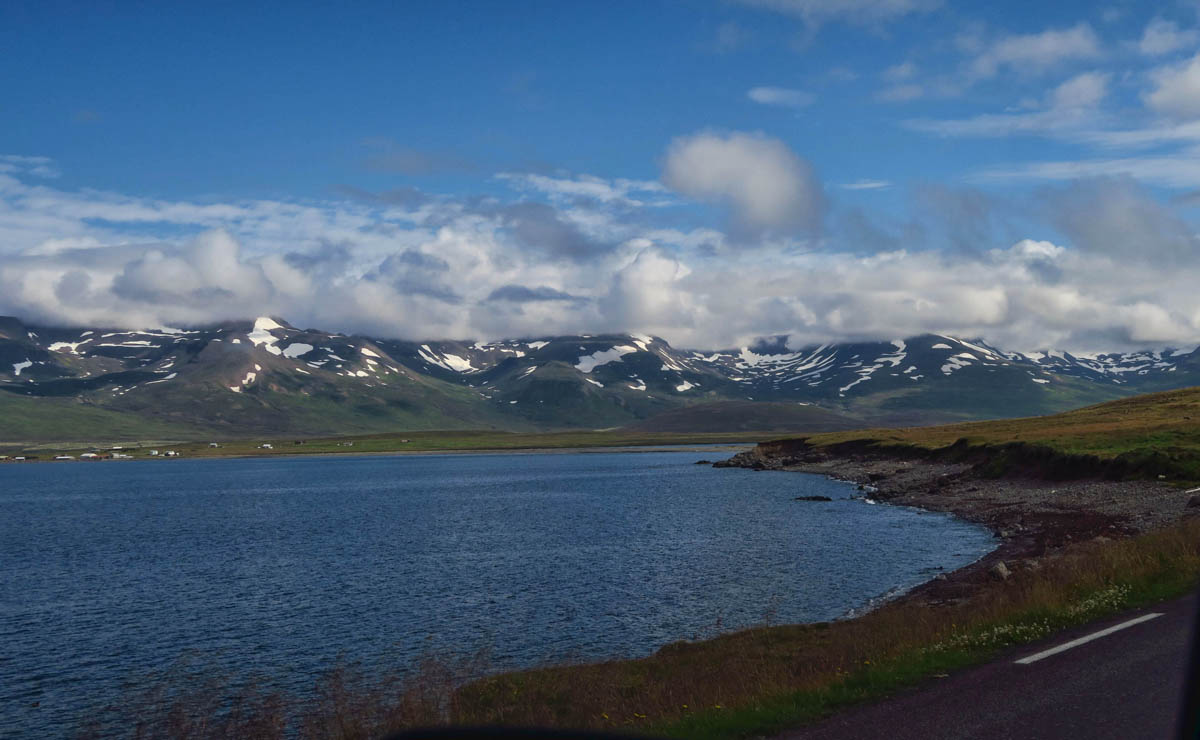 Not much traffic along the northern route. 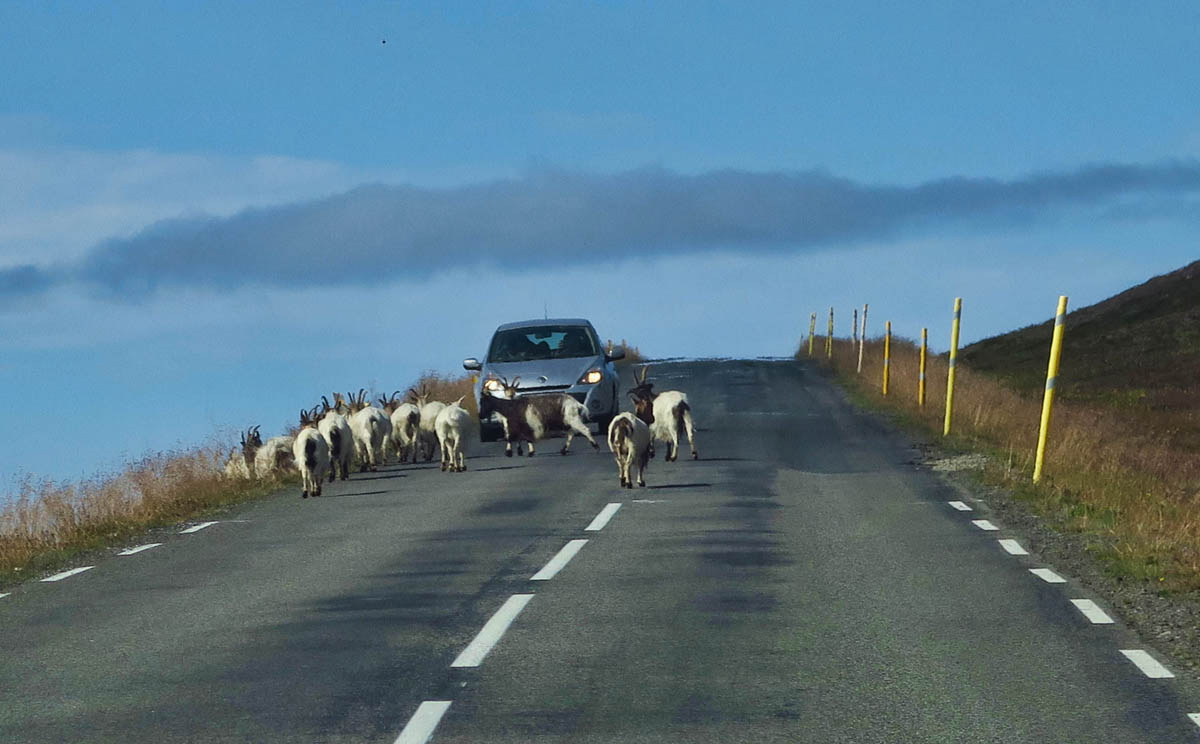 A frequent occurrence, only it’s typically sheep, not goats. 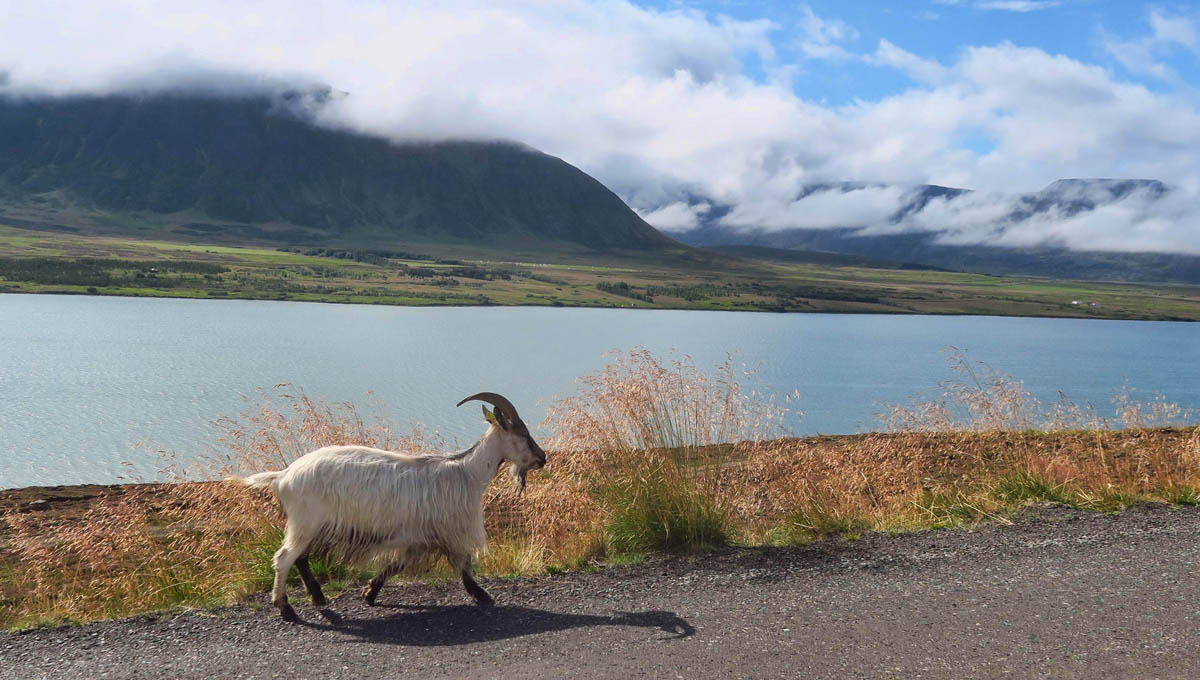 They love to run alongside in front so you have no idea if they are going to dart across. 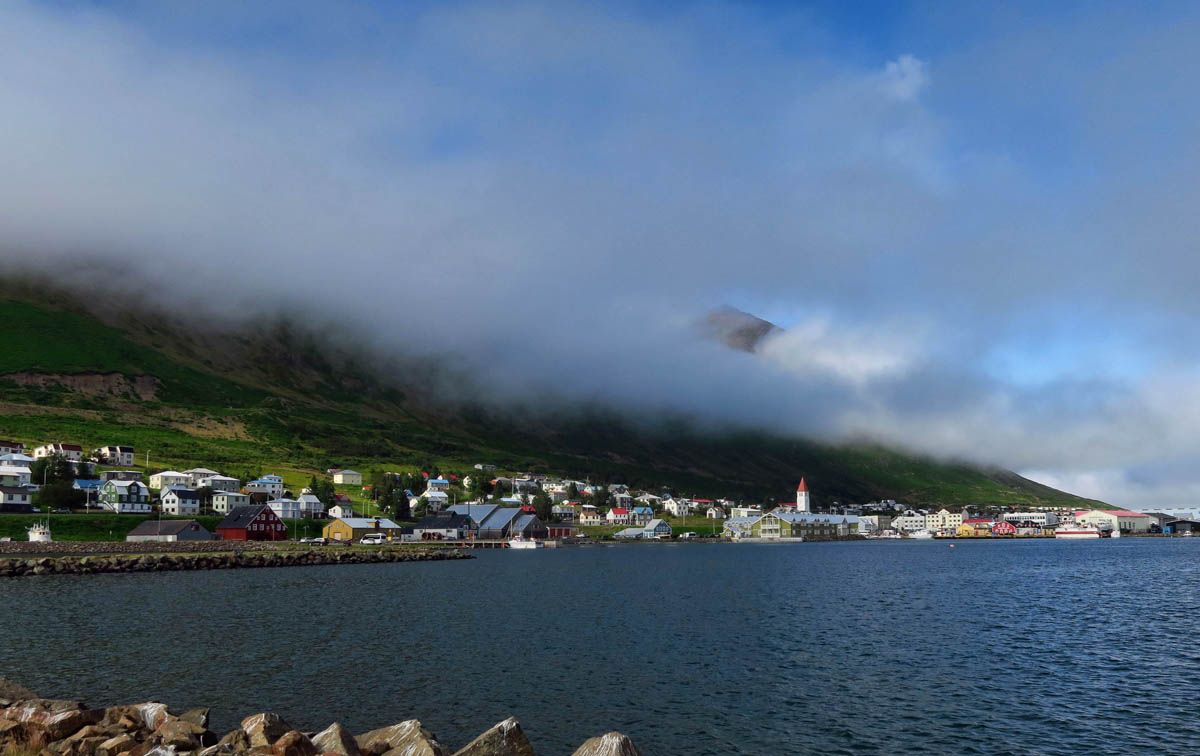 This tiny fishing village of Siglufjörður, population around 1,200, is located on the fjord of the same name. Hard to see through the fog, but there is a pretty high mountain behind it. The town was cut off with no roads until 1940 when a road over the mountain pass was built. That road is the highest mountain road in Iceland. 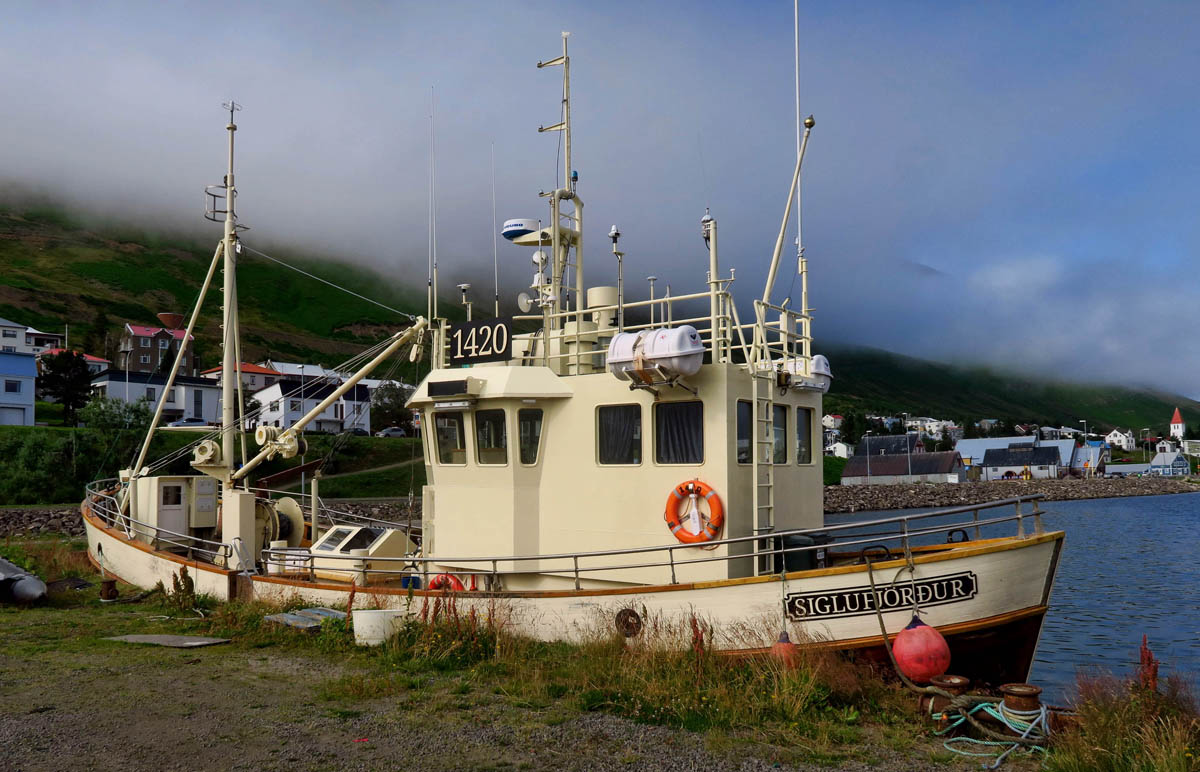 Siglufjörður was once a big herring fishing town, with herring fisheries, festivals, and a Herring Museum. The canneries have all closed, but the museum remains and the festival continues each August. 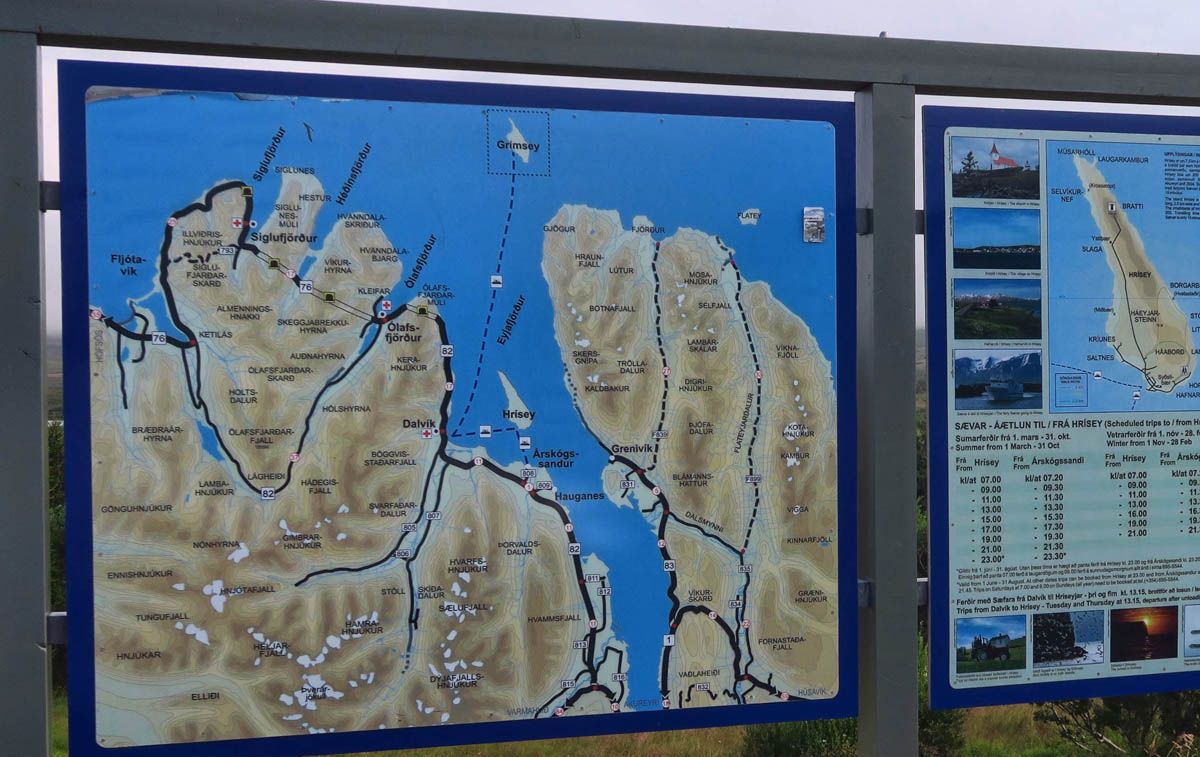 If you look at the peninsula on the left, you will see where the solid, curvy road becomes a straight, dotted line, cutting across the “fingers.” This is a series of 3 tunnels, two of which are one-lane. 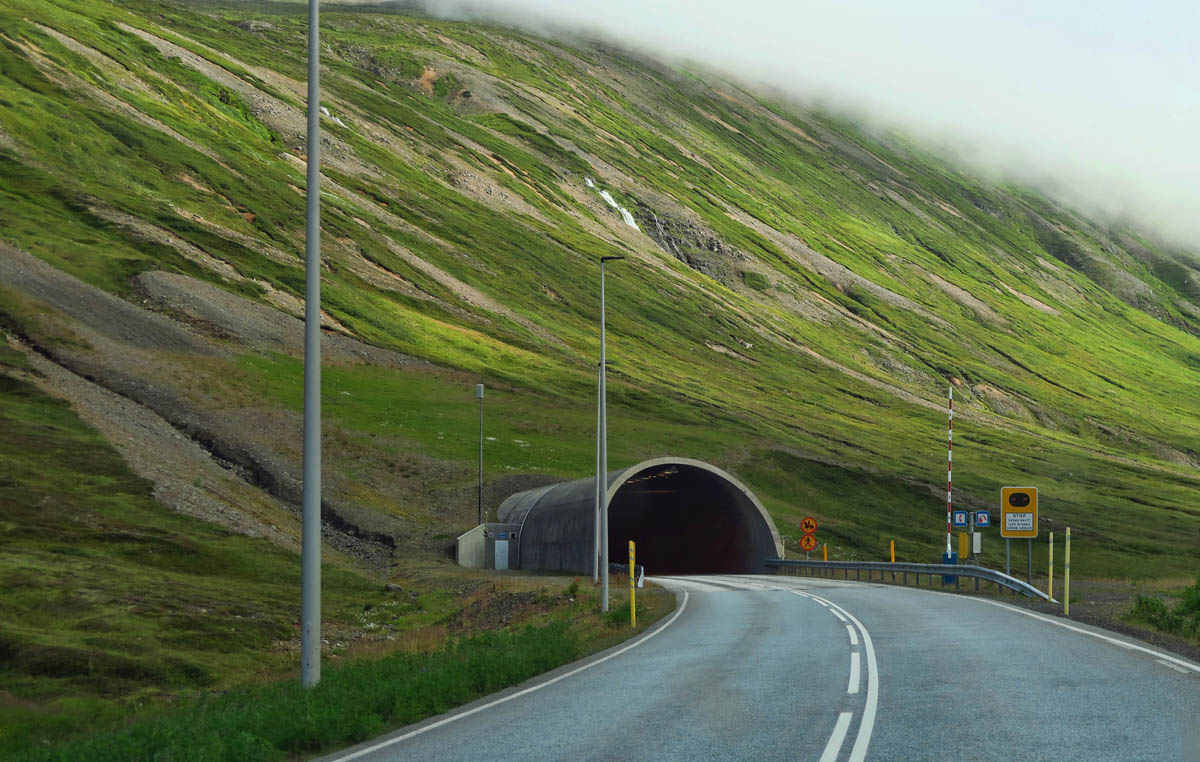 This one is two-lane. The series of tunnels runs for 11km, just over 6 miles. 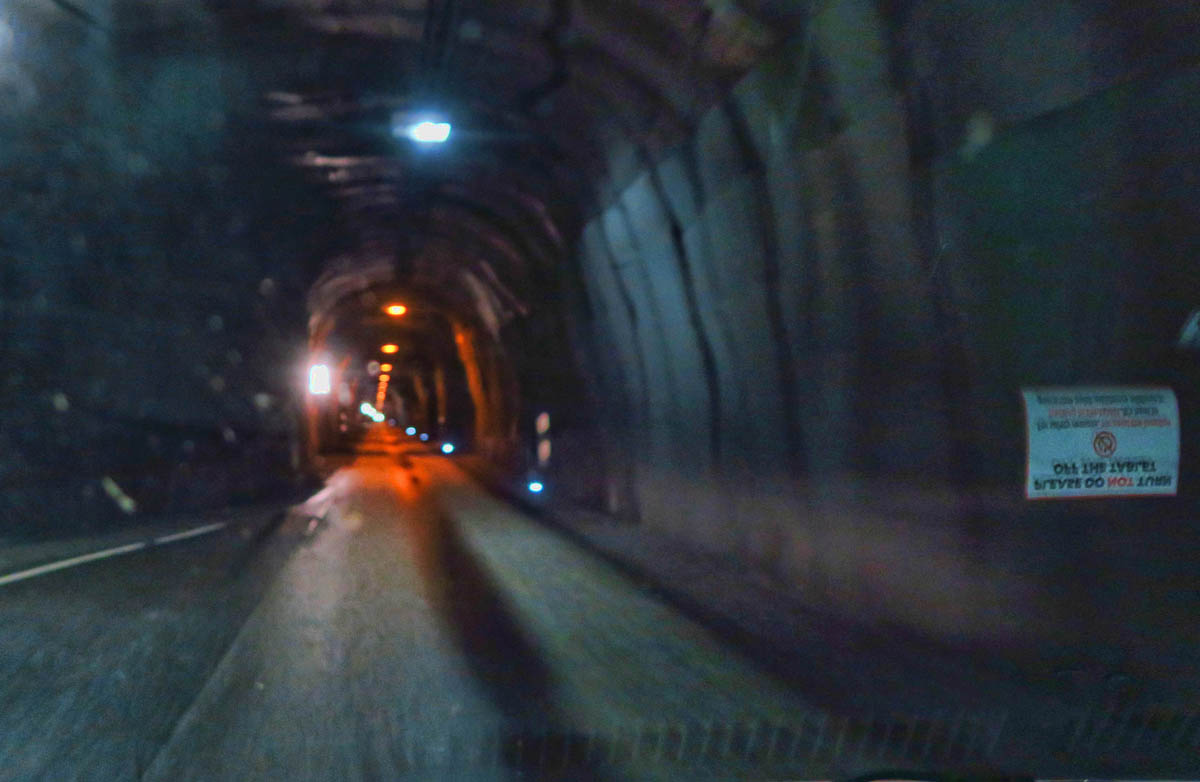 This is a terrible picture, but you get the idea of the terror that comes from driving a one-lane tunnel. LOL! Note on the left one of the pull-out areas. 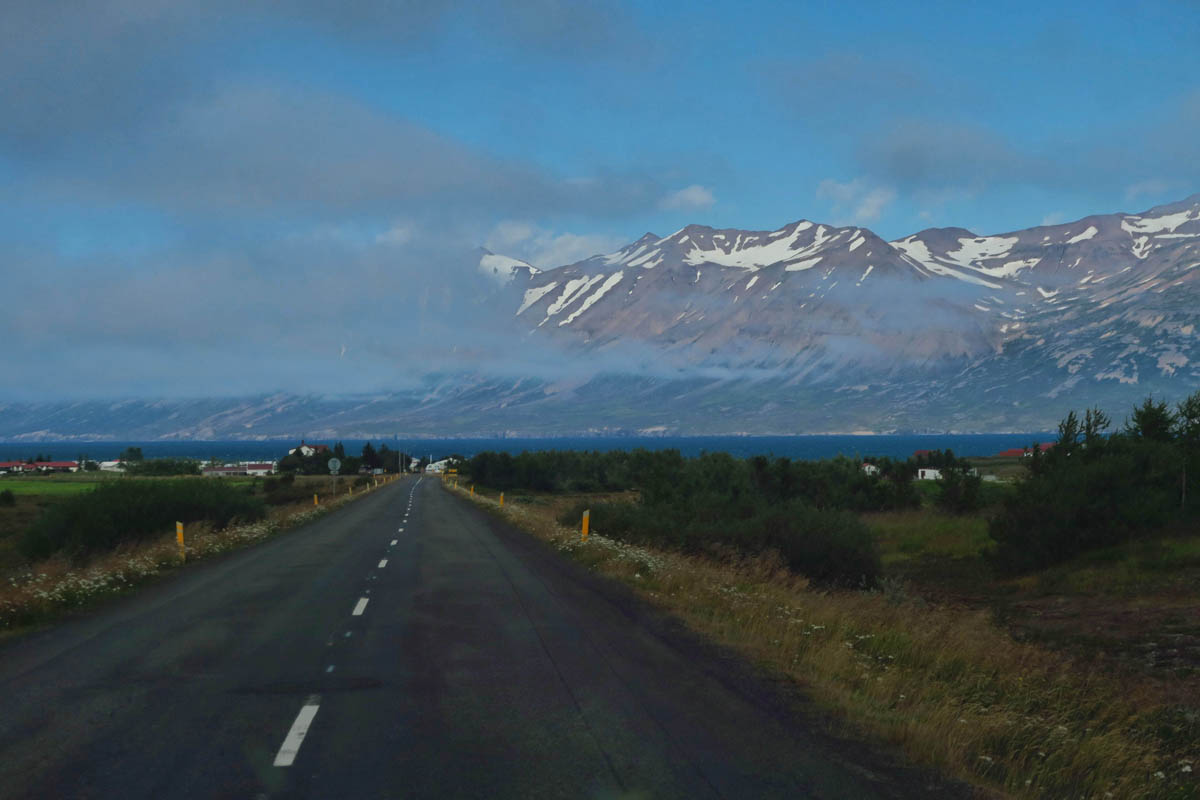 It’s always such a relief to get out of the tunnel and see the beautiful scenery once again! 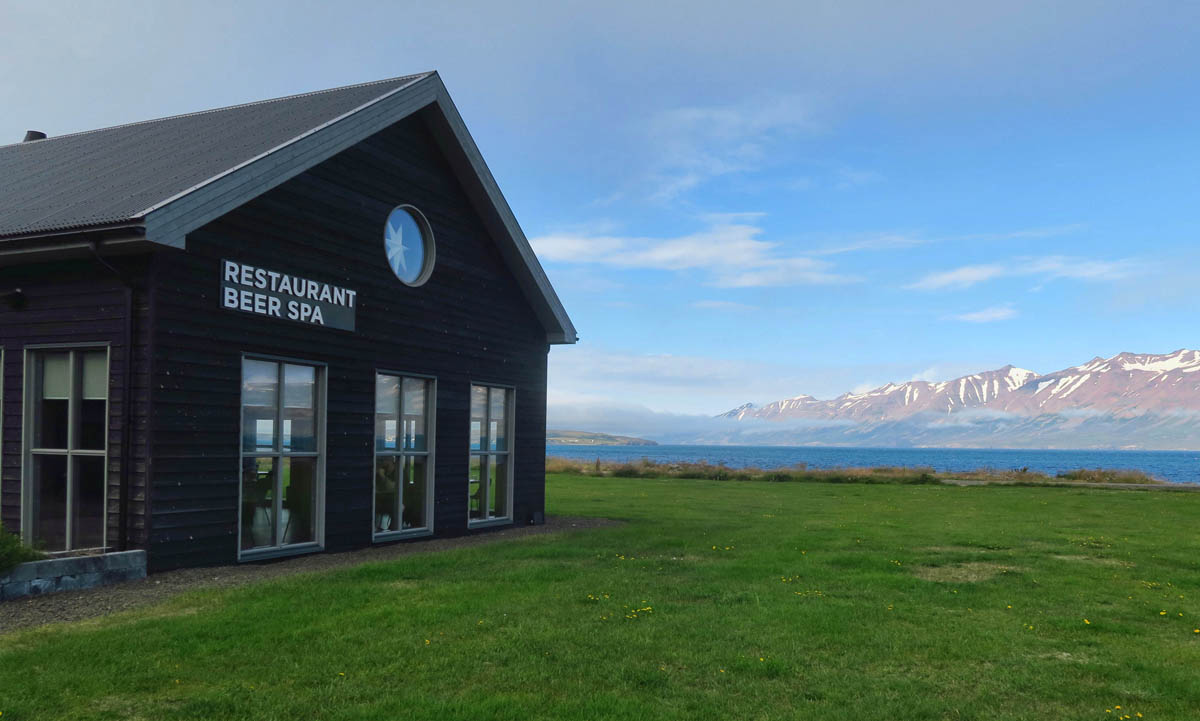 But the scenery isn’t the only reason I detoured off the Ring Road. As a lover of beer, how could I resist a “Beer Spa??” 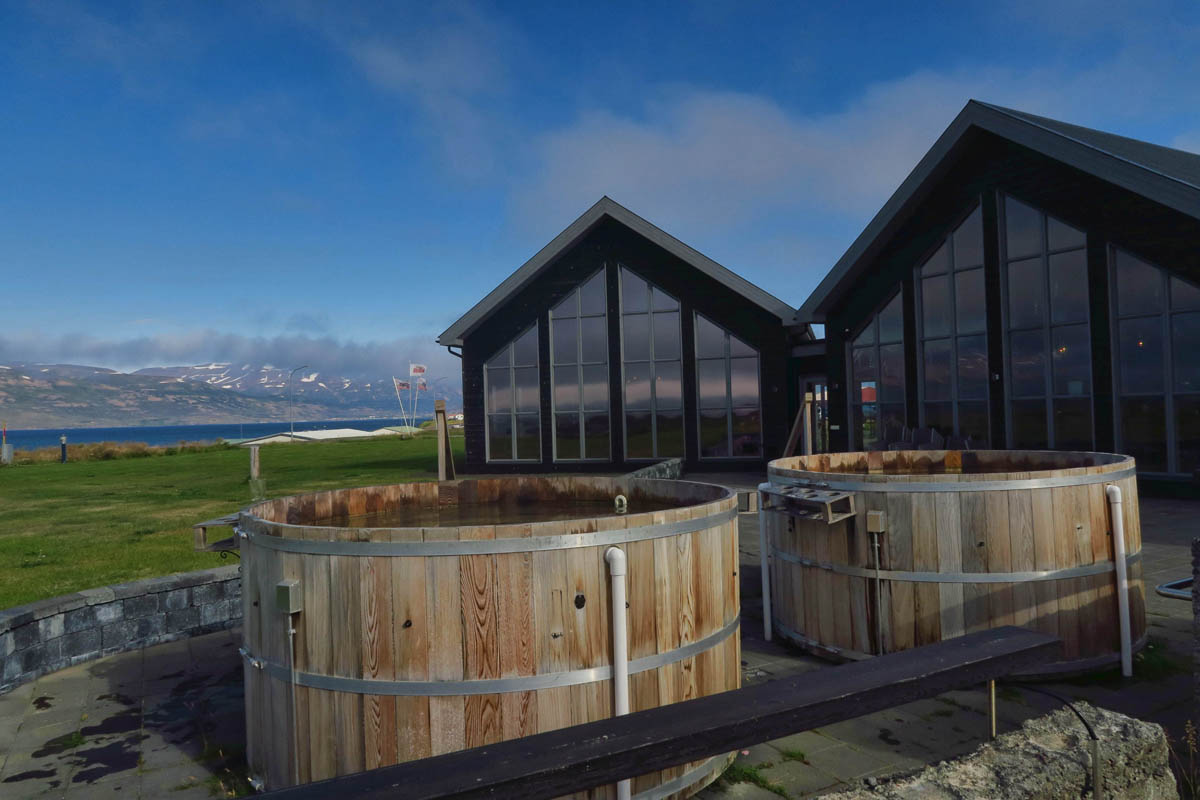 They advise you to arrive early, so you can spend some time soaking in their giant outdoor hot tubs overlooking the fjord. 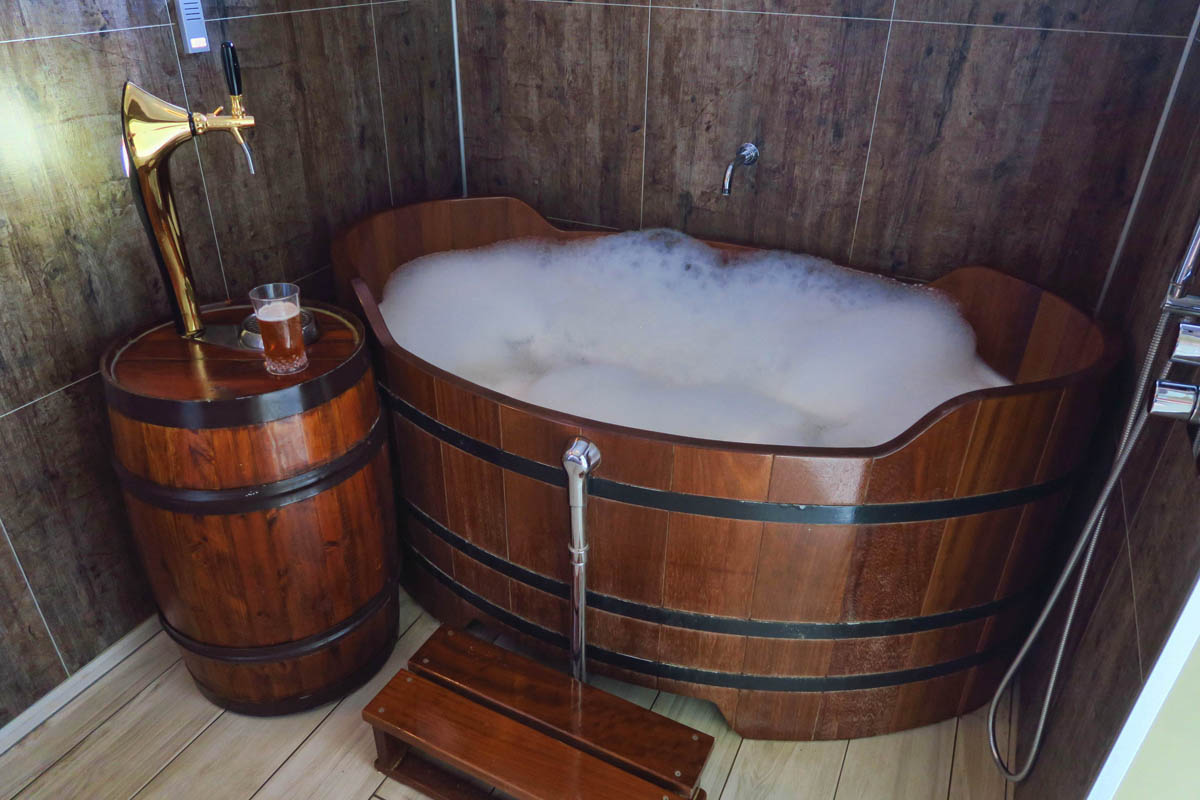 Yes, that is a tub of warm beer, and yes, I am about to get in it! Note the tap beside the tub for “all you can drink” while you are soaking. 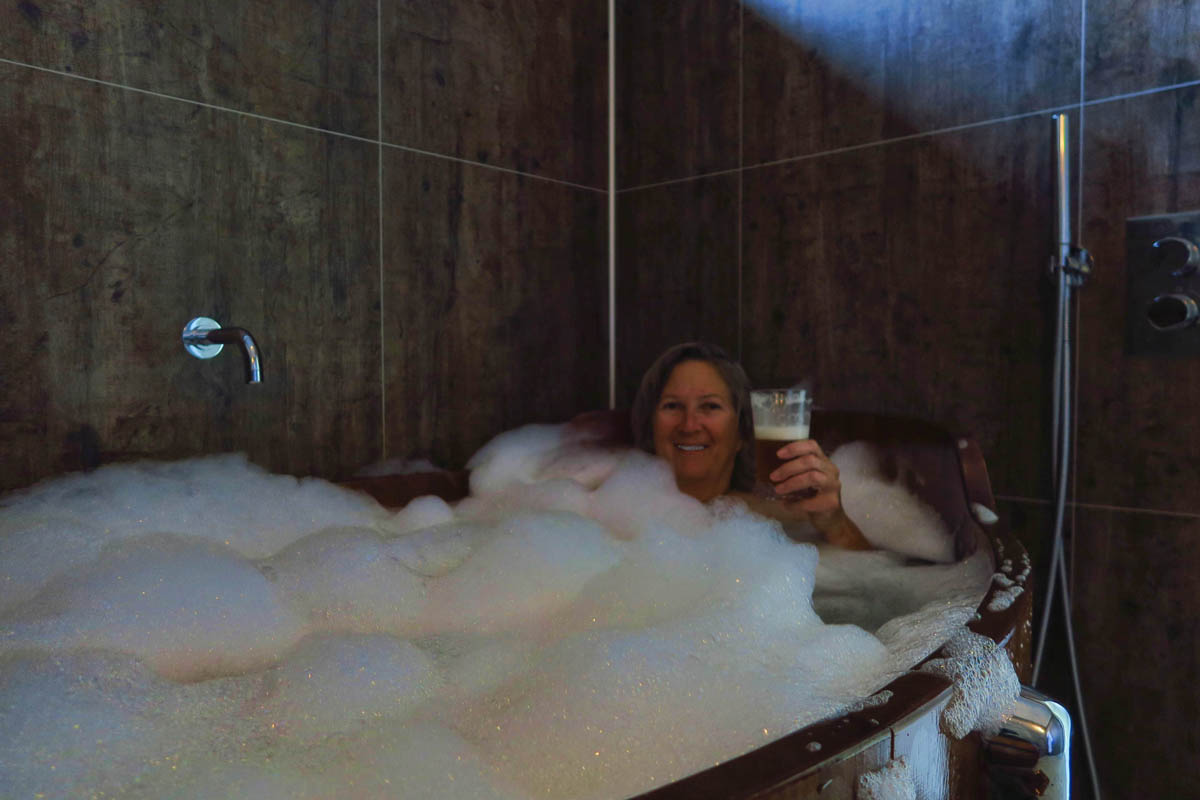 Turns out soaking in beer is actually good for the skin and hair as well as the psyche. Iceland has a zero tolerance DUI policy, so I will sleep it off in the camper van. 😉 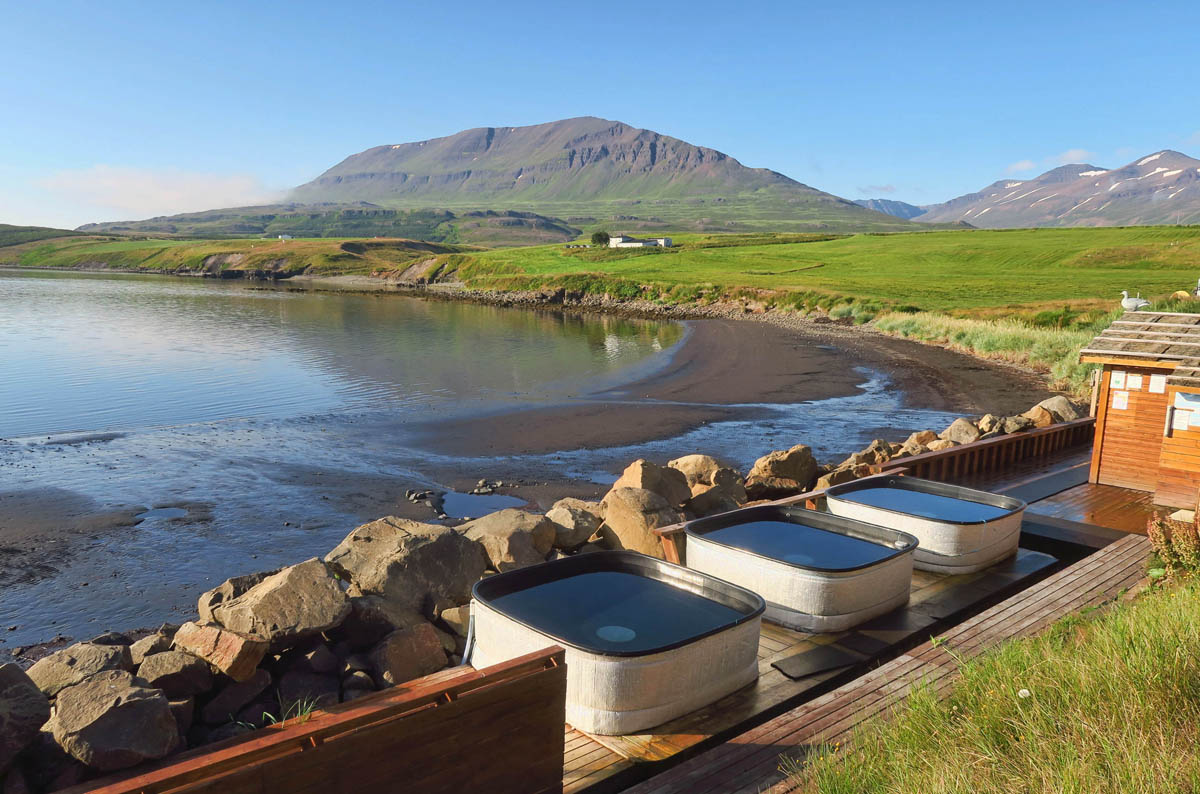 Hot pots at the Hauganes Campground, just 3 miles from the beer spa. 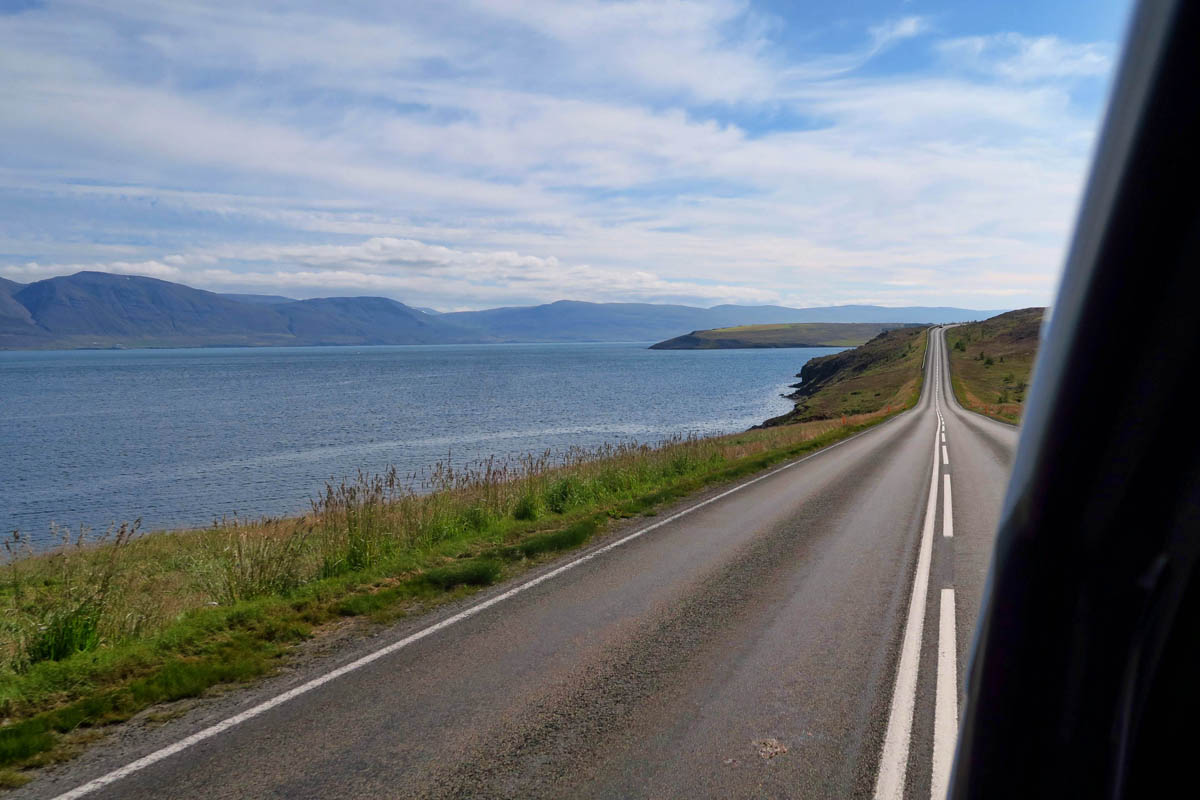 Back on the road the next morning toward Iceland’s second largest city, Akureyri. 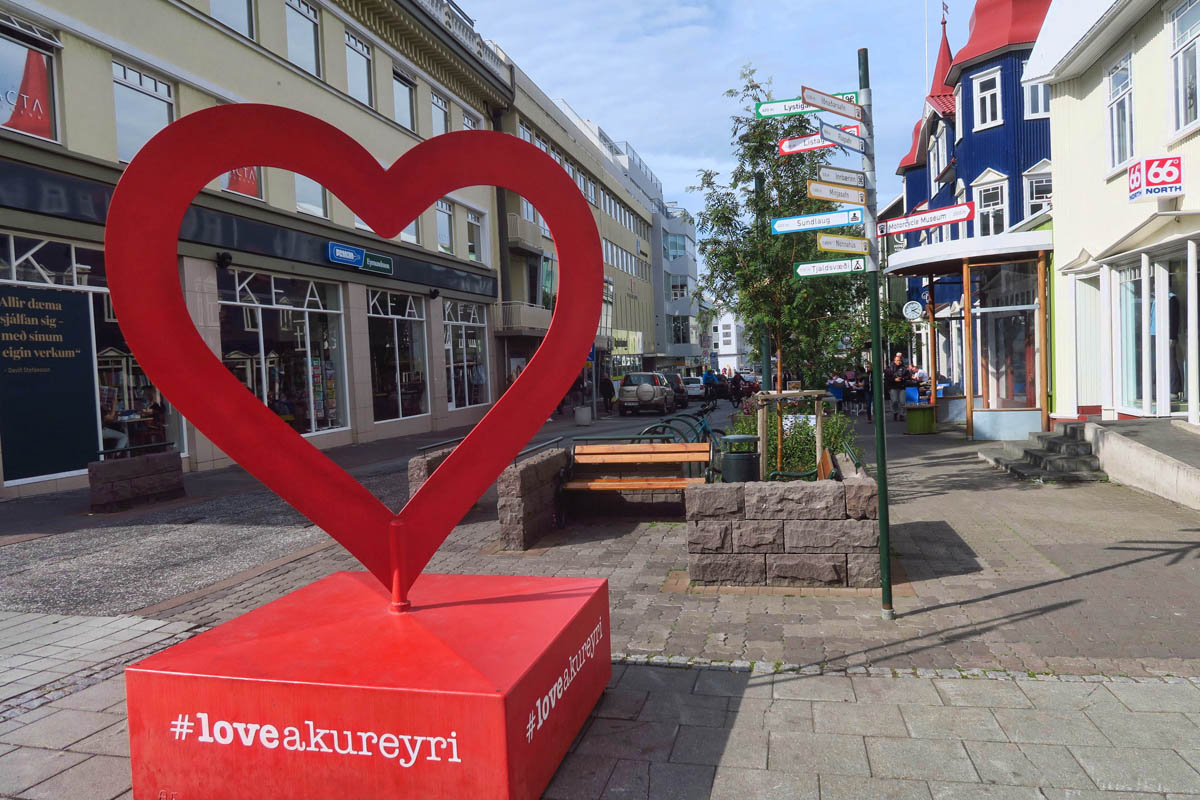 Akureyri is a University town. Also home to some large fisheries. 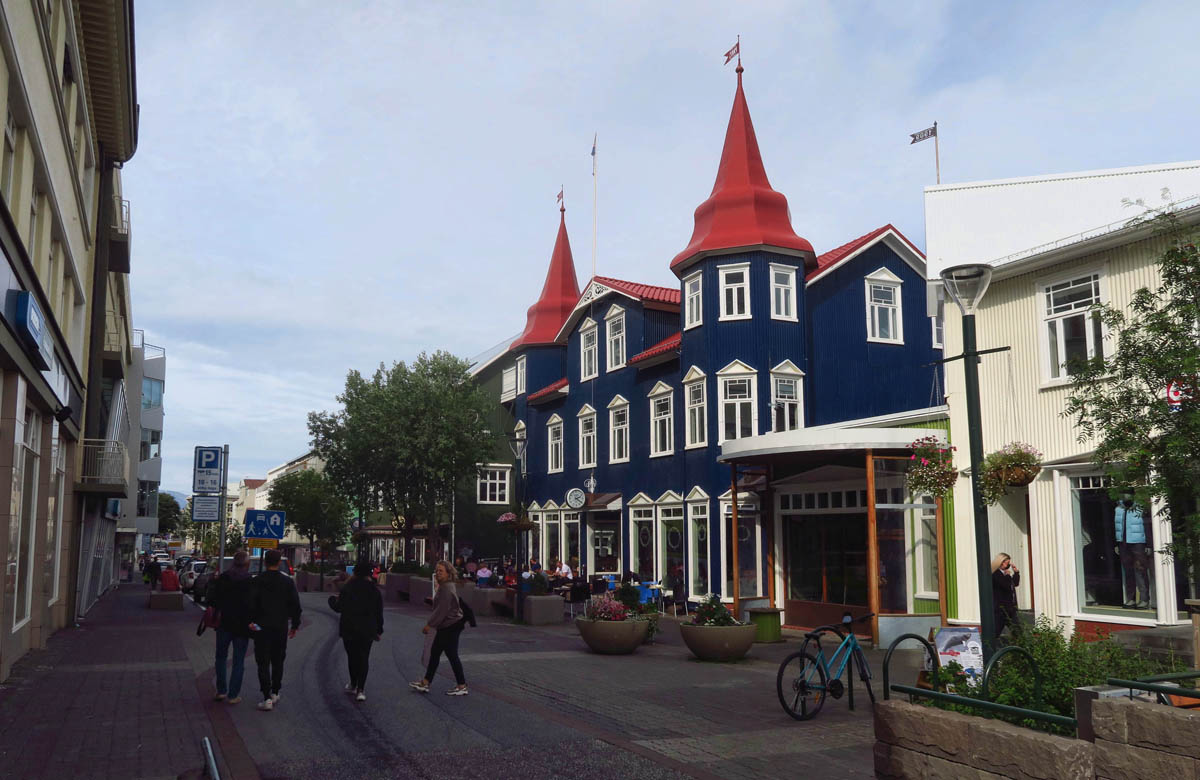 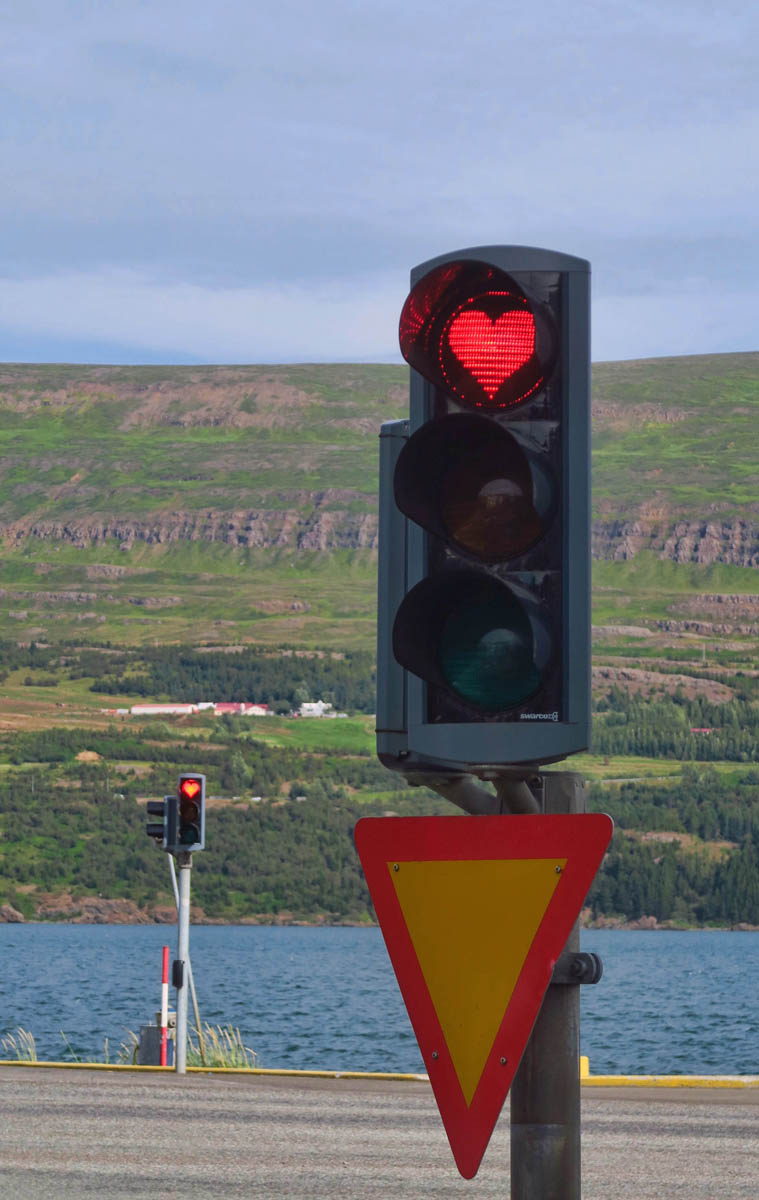 One endearing unique fact about Akureyri, all their red lights are heart-shaped. 🙂 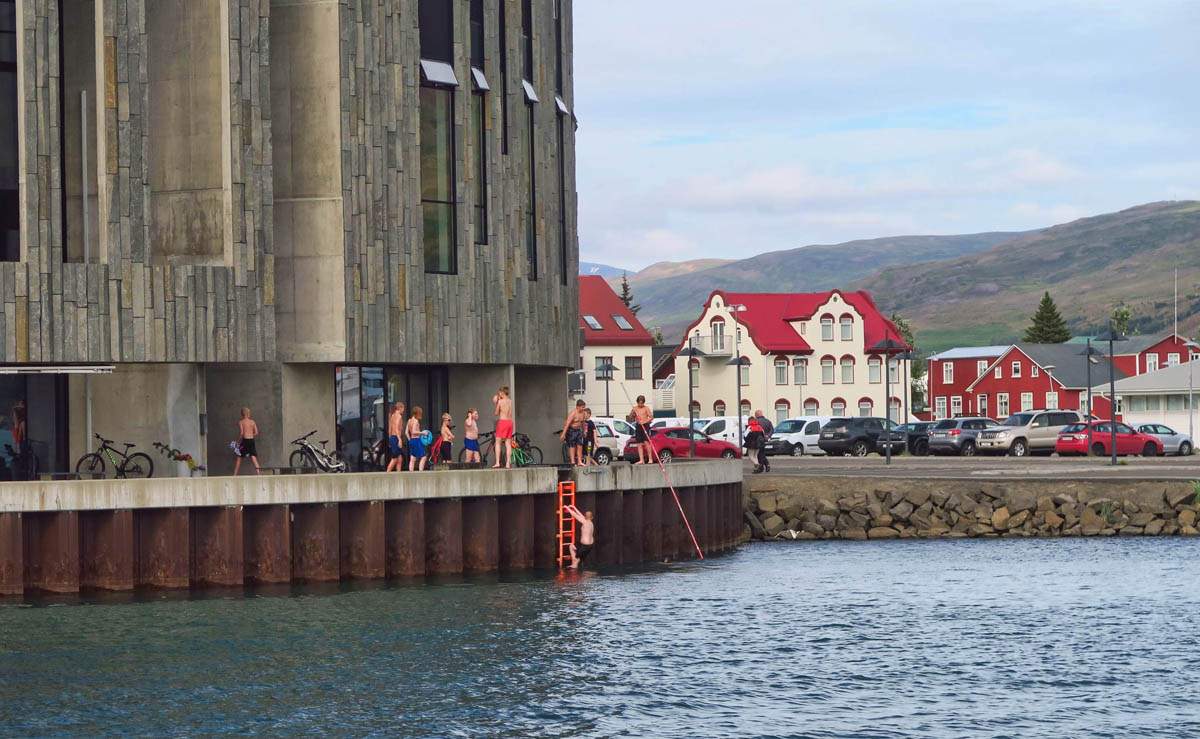 While it’s pretty comfortable temps here this day, these kids might be taking it a bit far…not what I thought I would see in Iceland. 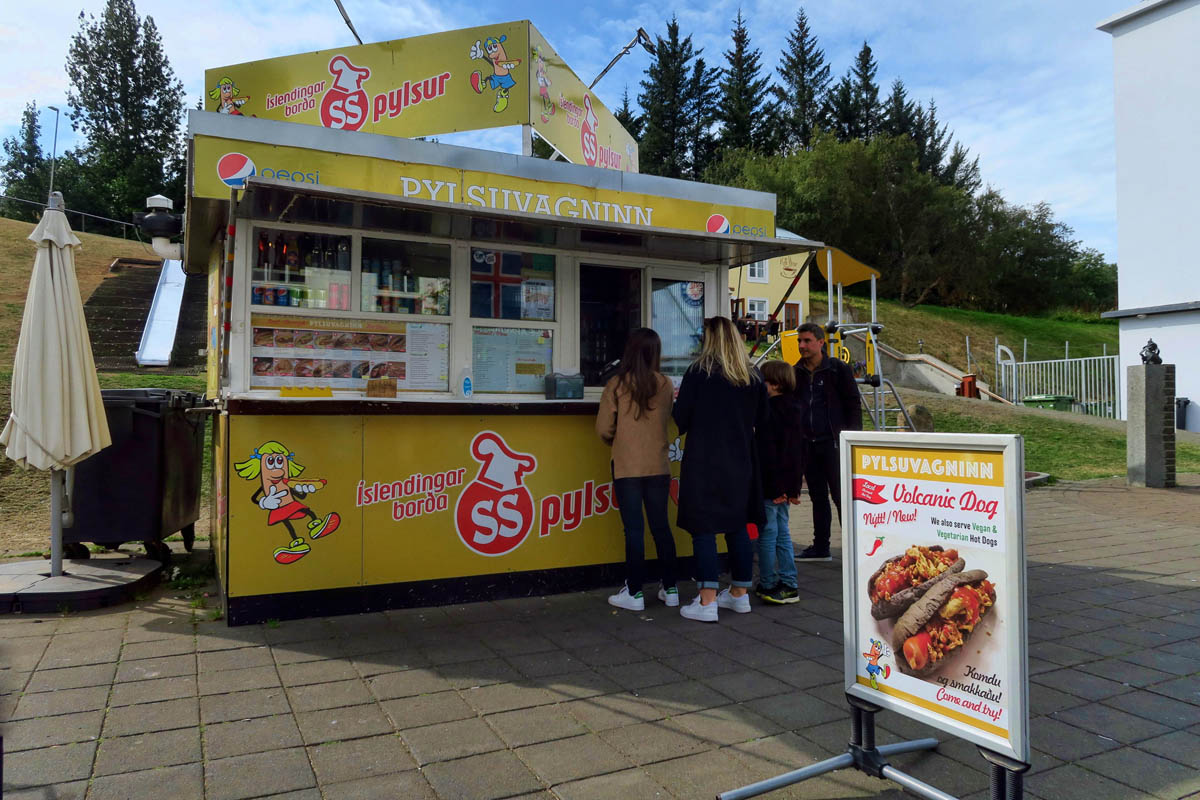 Icelanders love their plysur! (hotdogs) They are in every town, at every gas station, even in the prepared sandwich section of some grocery stores. What sets Icelandic hot dogs apart is they are made from Icelandic lamb, along with pork and beef 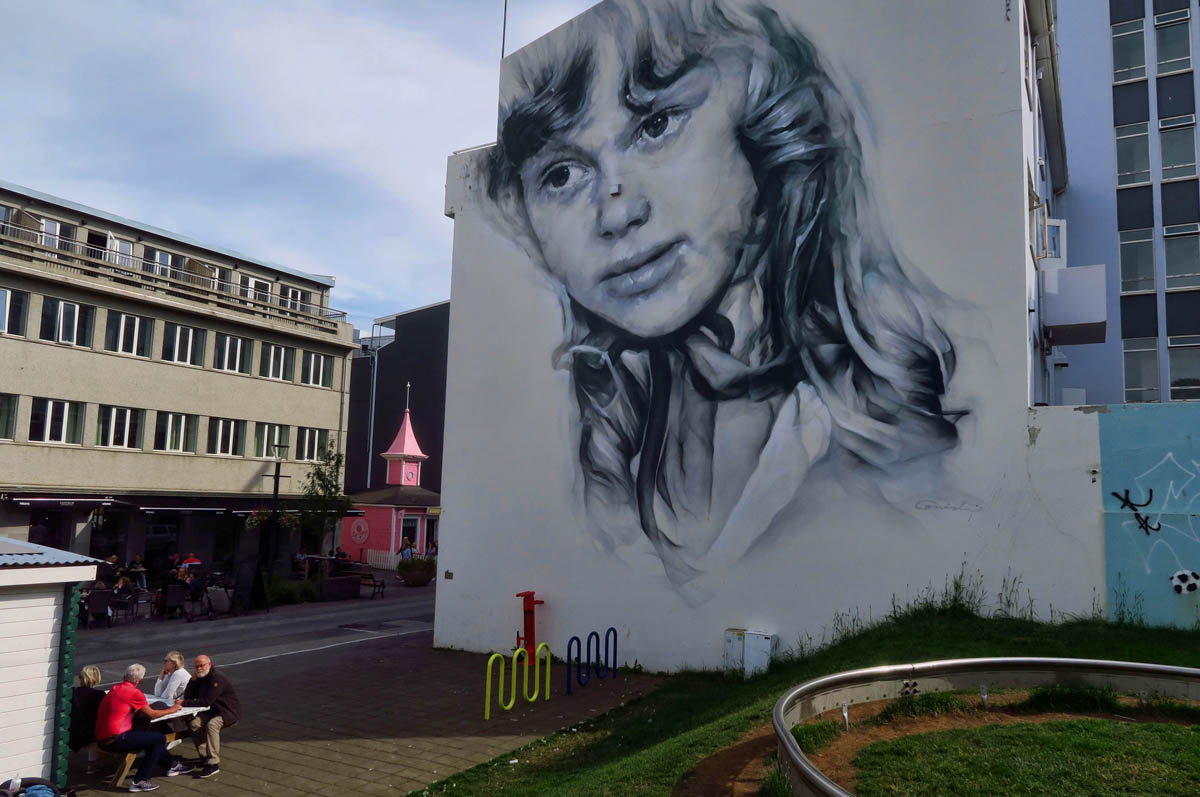 Such a beautiful mural. Such an unfortunate placement of a vent on the wall. 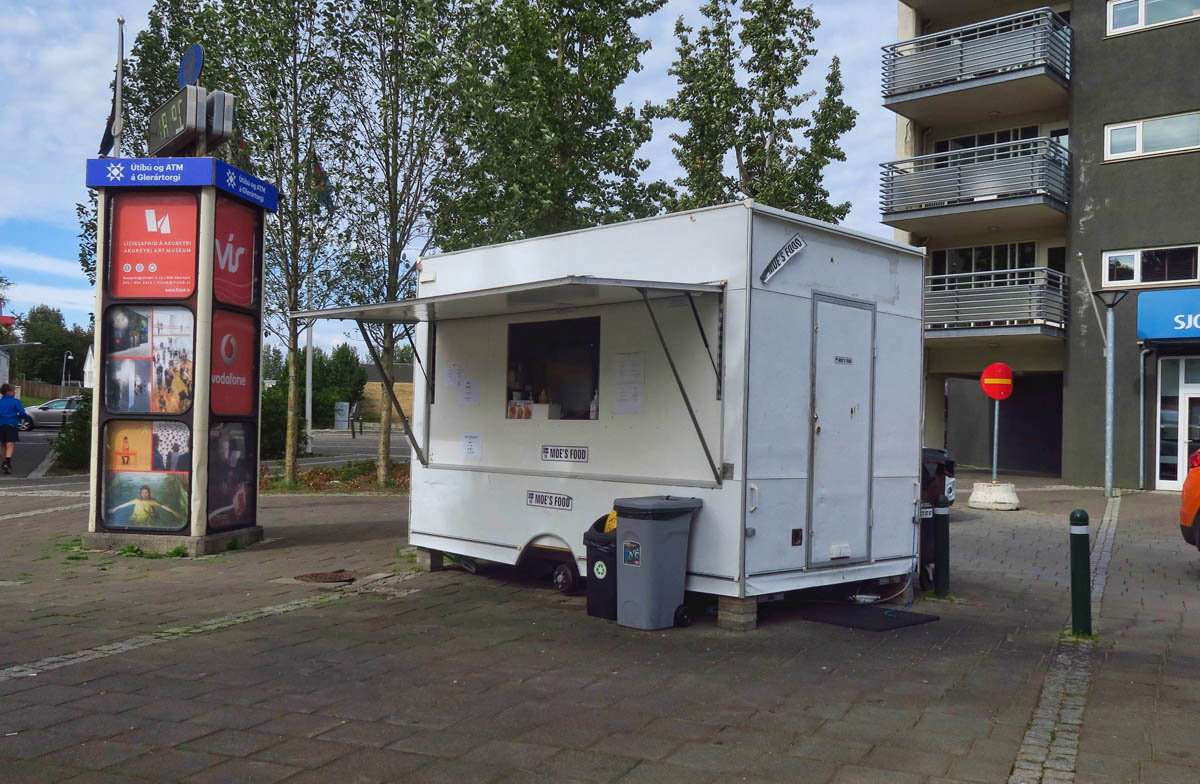 Moe’s Food Truck came highly recommended. Do you think he could use some signage? 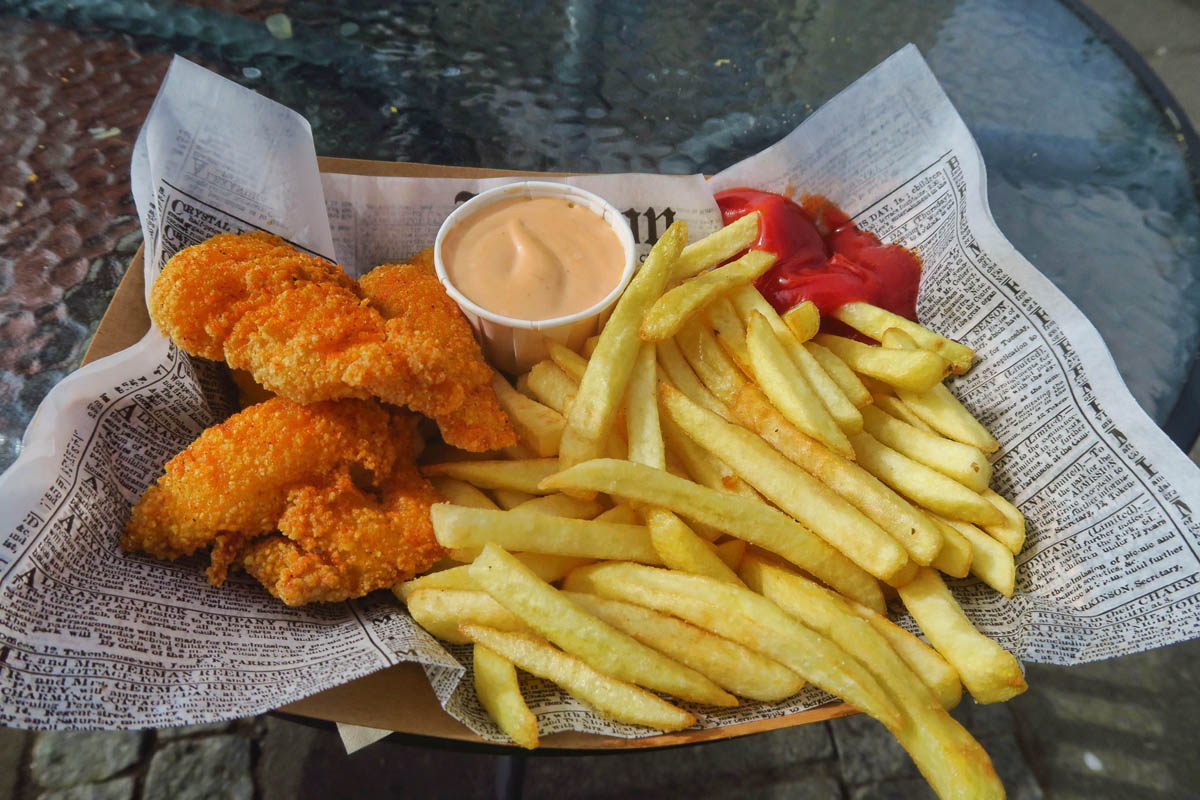 Despite the blandness of his food truck, his fish and chips were pretty tasty.

Next up following my stop in Akureyri, it’s back to the northeastern fjord route….chasing waterfalls.

Campground on this section: Hauganes Camping

7 thoughts on “The Northwest: Borgarnes to Akureyri”