Whenever you see the letters “a and e” butted up next to each other like “æ,” that is pronounced as “eye.” So the peninsula is pronounced “SNEYE-fells-ness.” It translates, to “Snow Mountain.”

My goal during the two weeks in my camper van rental is to drive the Ring Road. Most complete it in 8-10 days, but I am already wondering how I am going to complete it in two weeks. I have a day by day itinerary mapped out into a an excel spreadsheet so I stay on track to see all I hope to see. But what initially seemed like a reasonable pace at times feels as if I am on the TV show, The Amazing Race.

There is much to see and do here. If you are a hiker, you could focus the entire Ring Road on hiking all day, every day. If you are a photographer, there are hundreds of photo op stops along the way. If you are a hot springs nut, you can zigzag the countryside soaking in all the thermal hot springs, pools, lagoons, rivers, etc. But if you are like me and have a passion for all three, it’s tough to fit it all in. And at this stage of life, I am starting to think like the old song lyric, “We may never pass this way again.” So I want to see all I can, while I can. 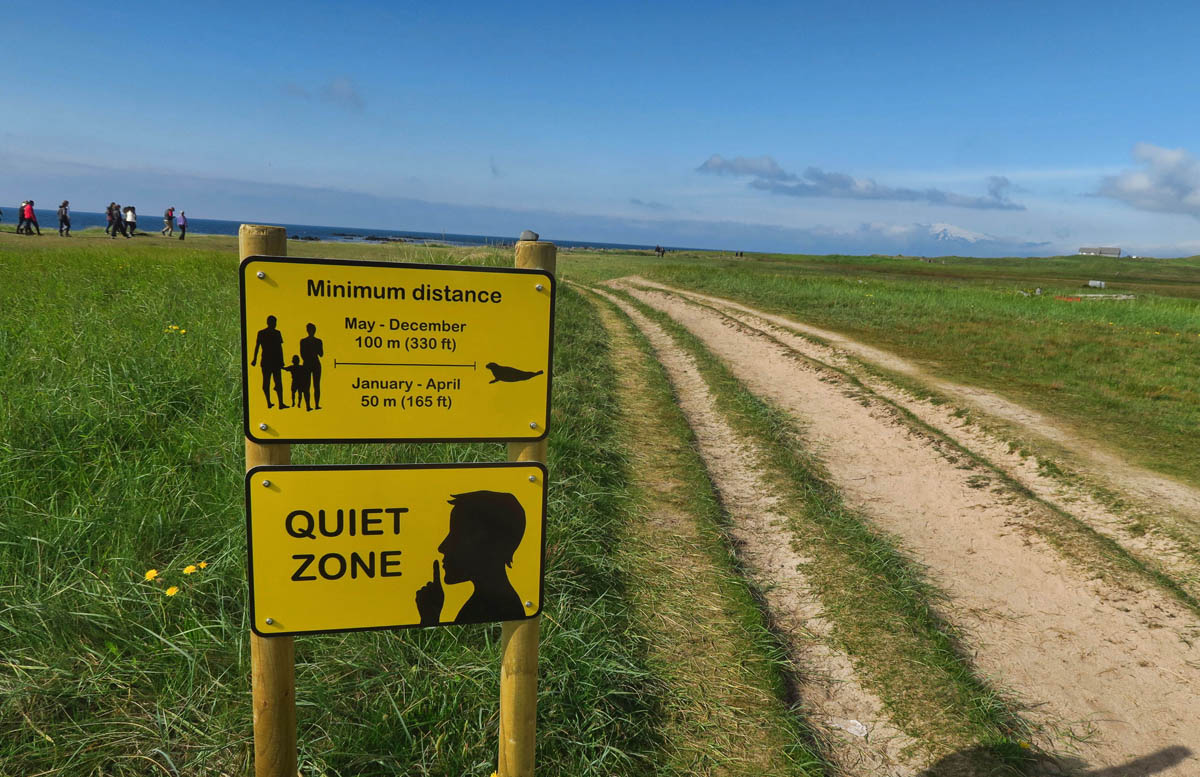 The path to the golden sand beach of Ytri Tunga. It is reported to be the best place in Iceland for a chance at seeing seals. 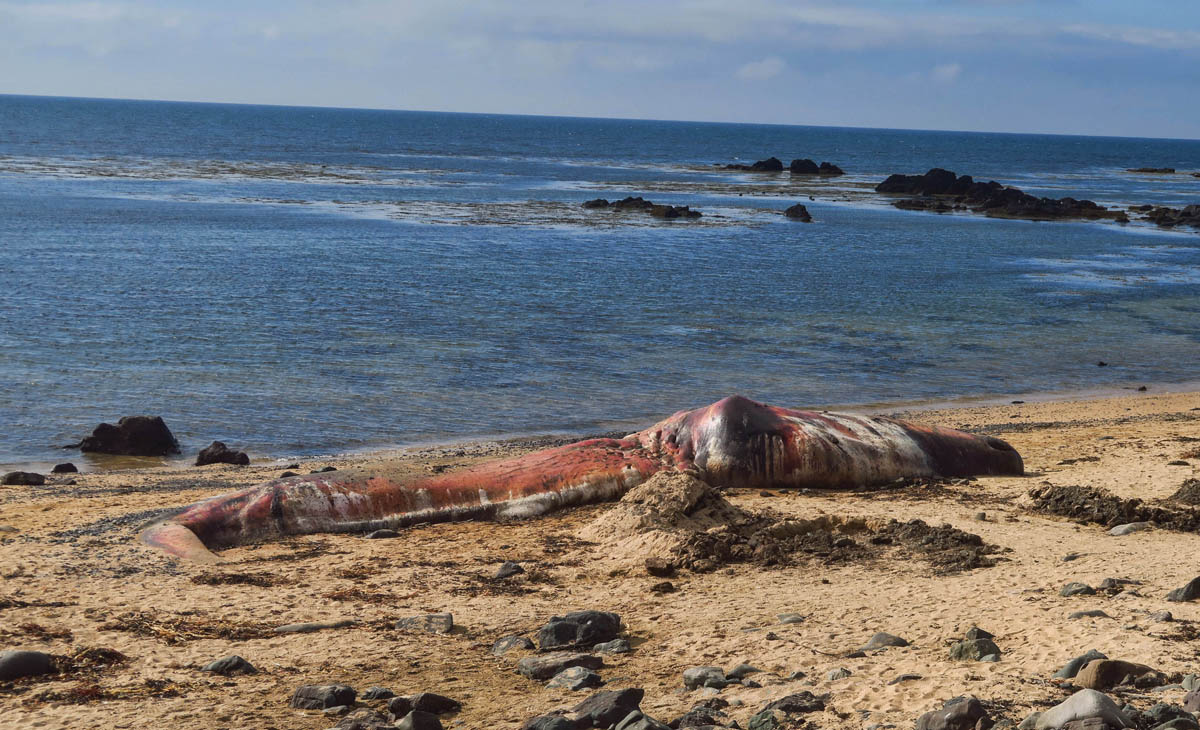 I hopped out of the camper van and bounded down the path, inhaling deeply to take in the fresh smell of the sea. Then the smell kept getting stronger. I’d never seen a beached whale before. 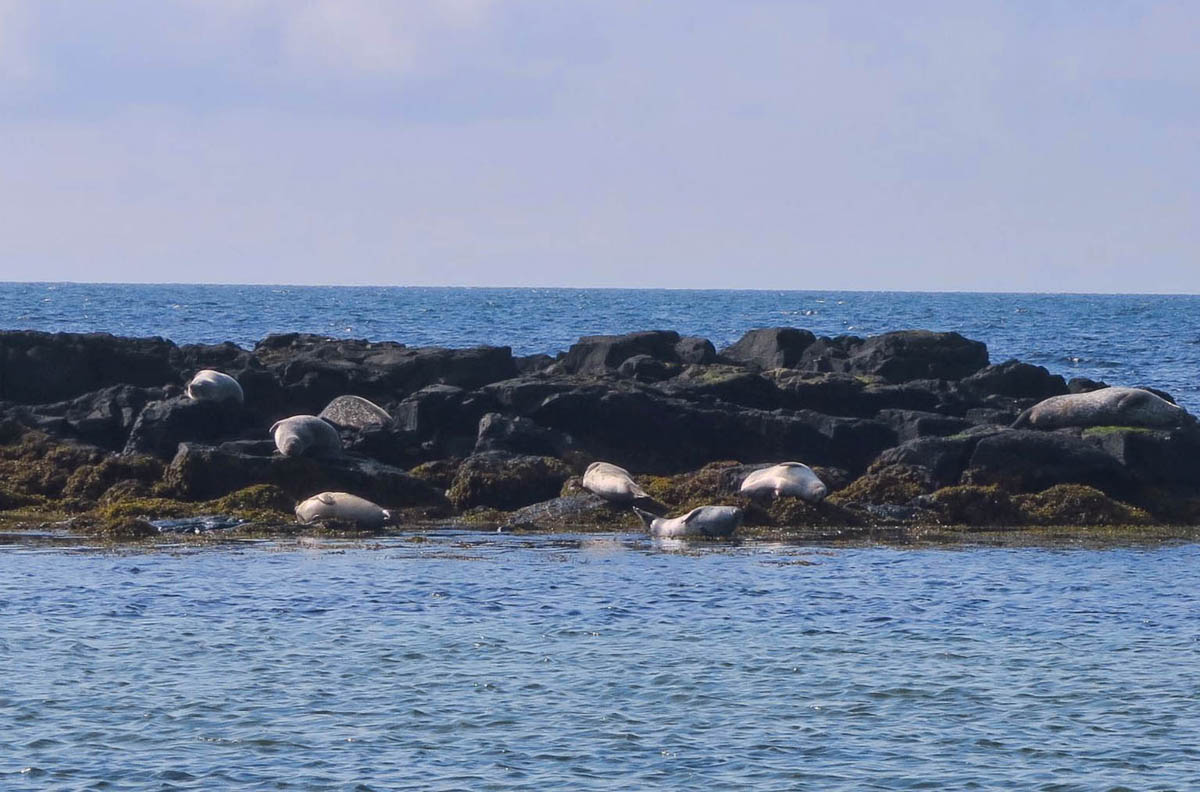 These are some fat and lazy seals! Iceland is home to two types of seals, Harbor seals like these, and grey seals. 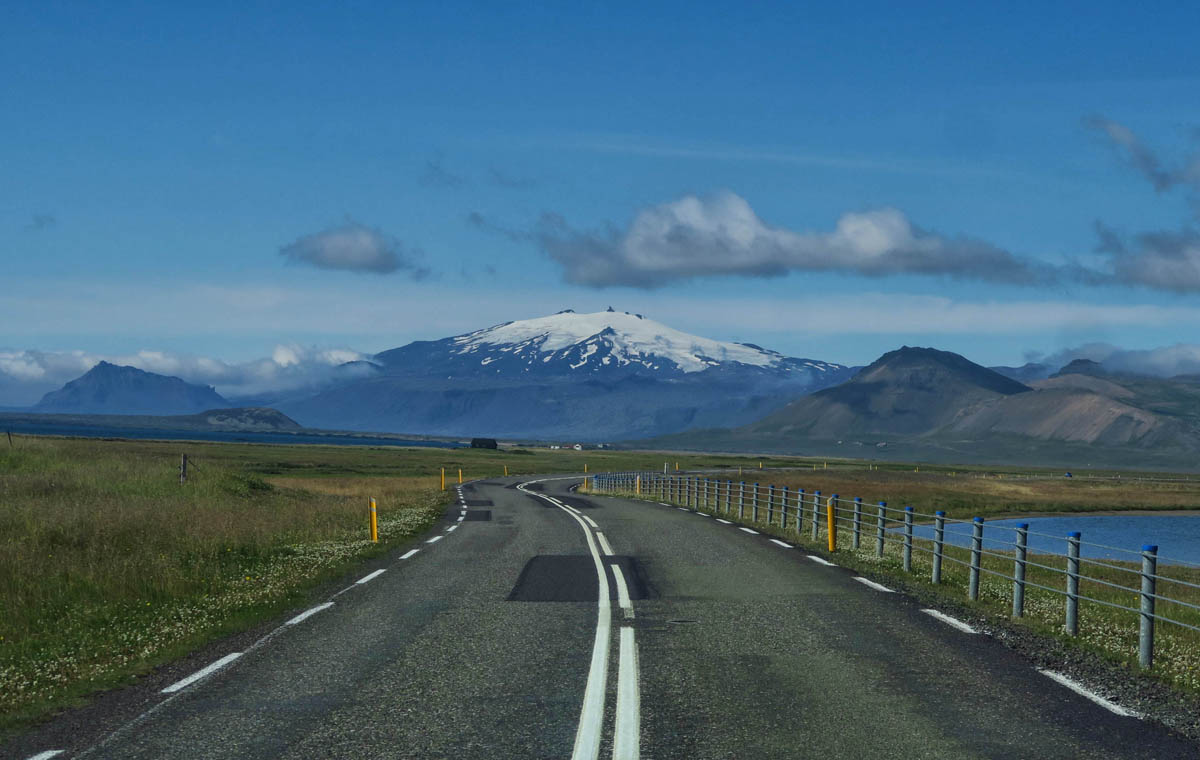 Back on the road, driving toward Snæfellsjökull. In Iceland, words are often concatenated. The word “Jökull” means glacier. So you wouldn’t say Snæfellsjökull glacier, as that would be redundant. 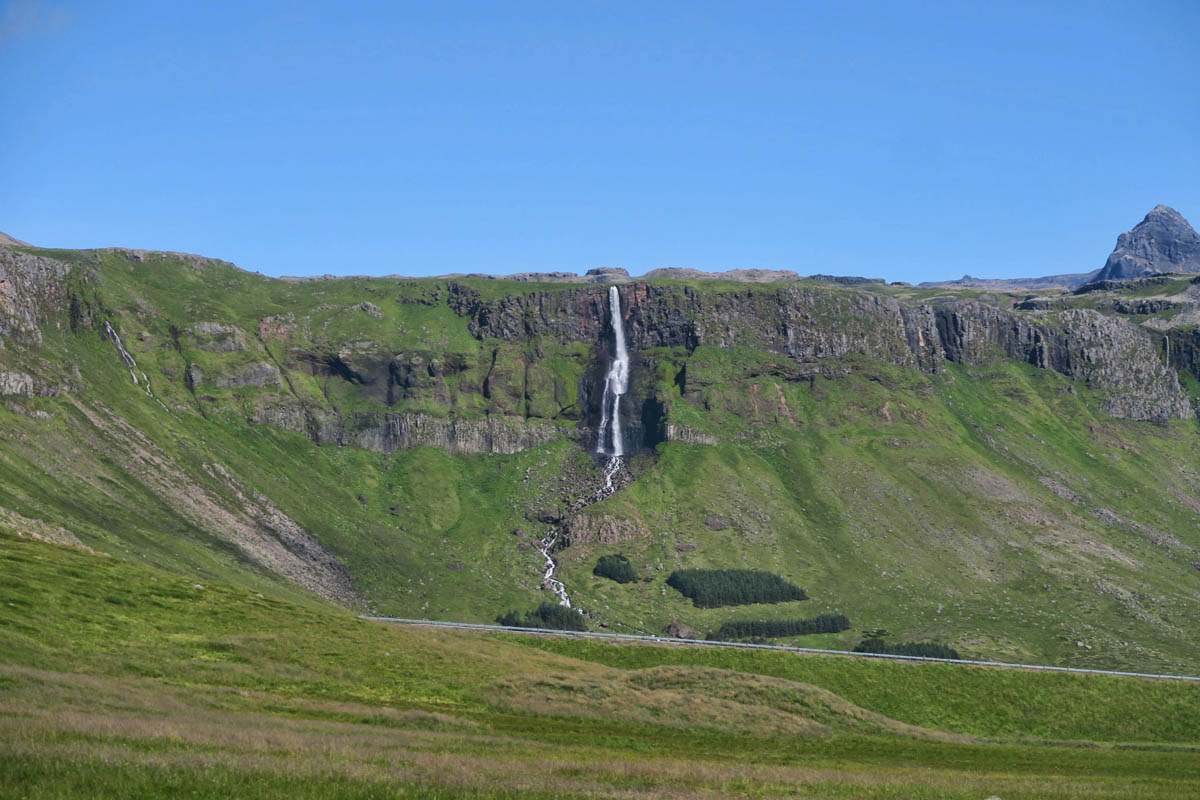 Driving along, there are waterfalls everywhere. If one stops for them all, they will never get anywhere! 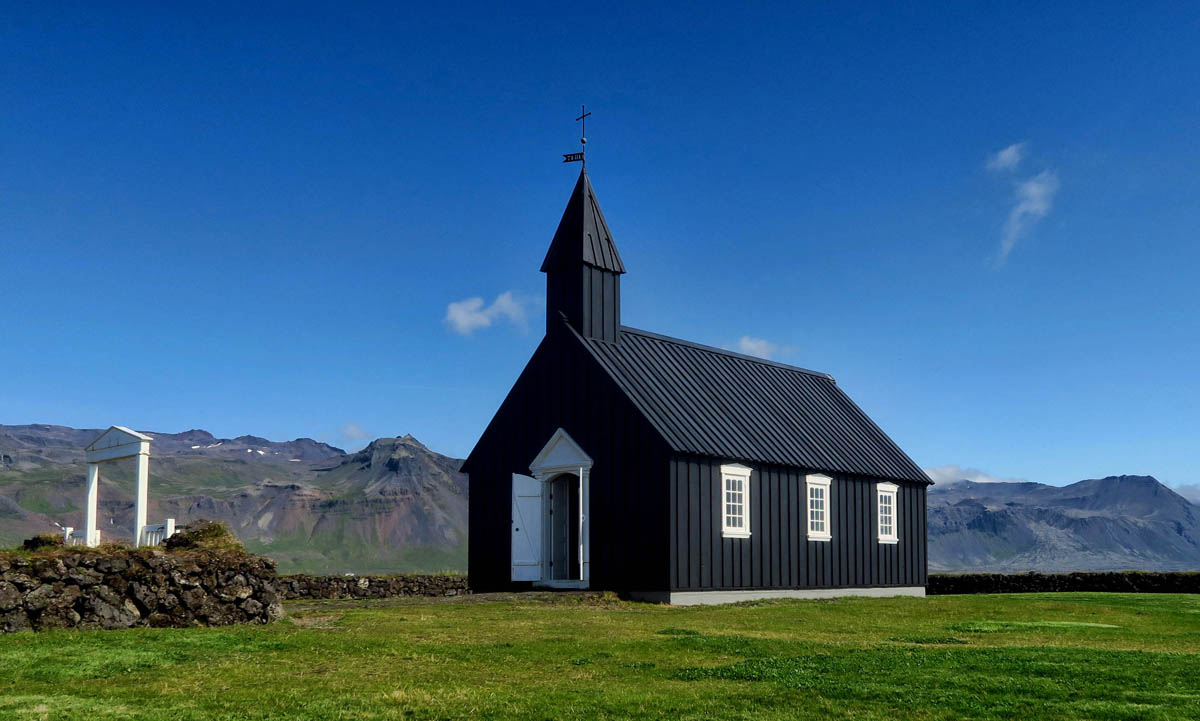 The Black Church of Búðir. 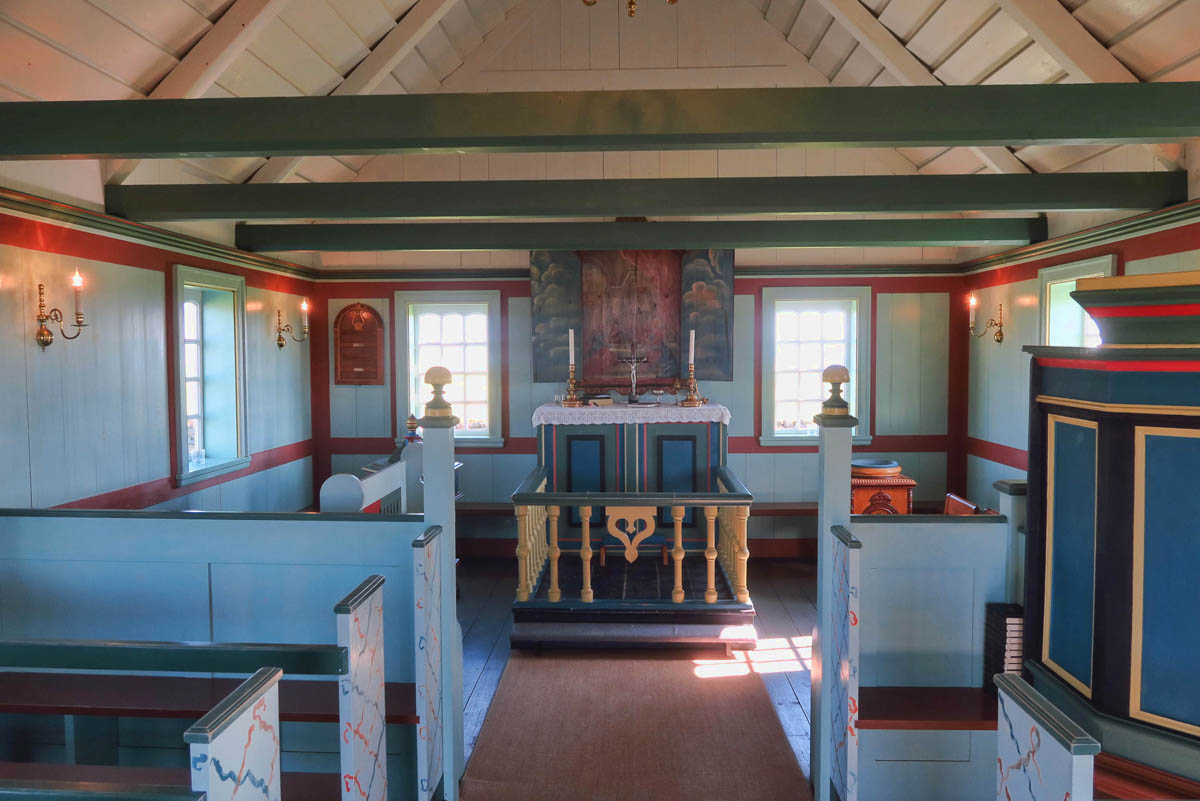 This charming little church is not typically open to the public. But there is a wedding scheduled here this day, and the bride and groom have not yet arrived, so the doors are open to visitors. 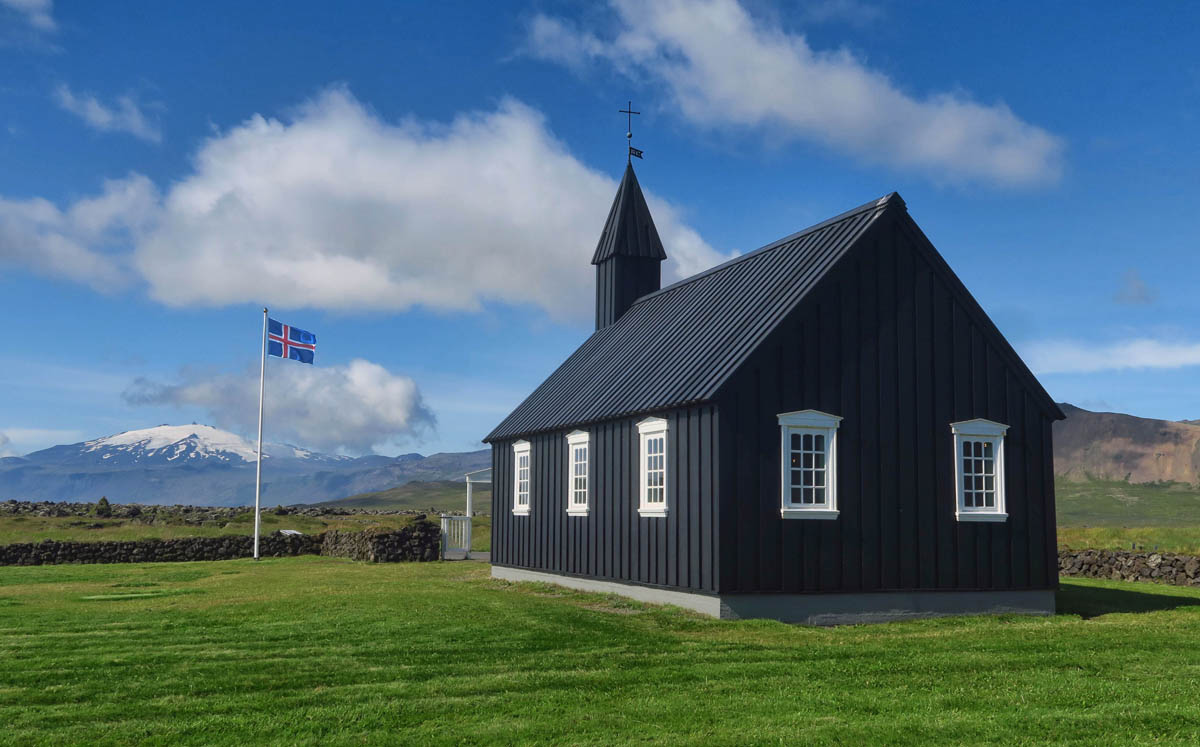 I couldn’t decide which photo I liked best, the open front doors, or the back view with the Icelandic flag and Snæfellsjökull in the background. So I am including both views.

If you think of the country of Iceland as a clock face (westfjords protrusion in upper left excluded,) with the Ring Road loosely following the coastal edge, Reykjavik would be around eight o’clock. I have decided to drive the Ring Road clockwise for several reasons. One, I have read the southeast portion is the most scenic, so I want to save the best for last. But also by starting in the less popular section first, my hope is that crowds in the southeast will lessen as local vacation season comes to an end.

Around nine o’clock on the “clock face” jutting out from Iceland’s western coast is the 90km (56 mile) long Snæfellsness Peninsula. It’s not considered part of the official Ring Road, however I read it shouldn’t be missed. It’s diverse and dramatic scenery of volcanoes, lava fields, mountains, glaciers, black and white sand beaches, and a few lighthouses to punctuate the landscape have earned it the reference of “Iceland in miniature.”

The road that circles the peninsula is just one scenic stop after another, most of the attractions right off the main road. There are seals, lighthouses, beautiful churches, and a stunning hike along the sea coast. At the very tip end of the peninsula is the Snæfellsjökull National Park, the smallest of Iceland’s three national parks. The park is named for its glacier-topped volcano which is surrounded by a lava field, including lava caves. 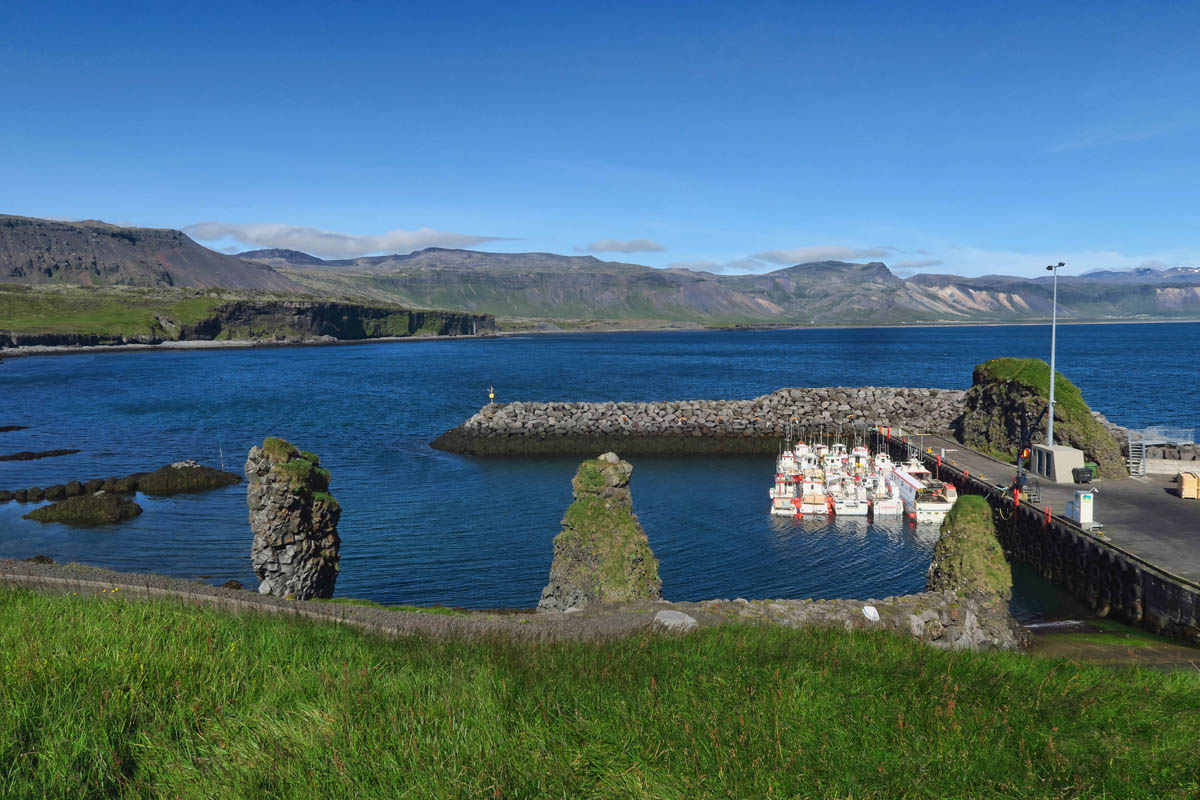 The small hamlet of Arnarstarpi. Odd to see all the boats bunched up together like that, but there don’t seem to be any docks. 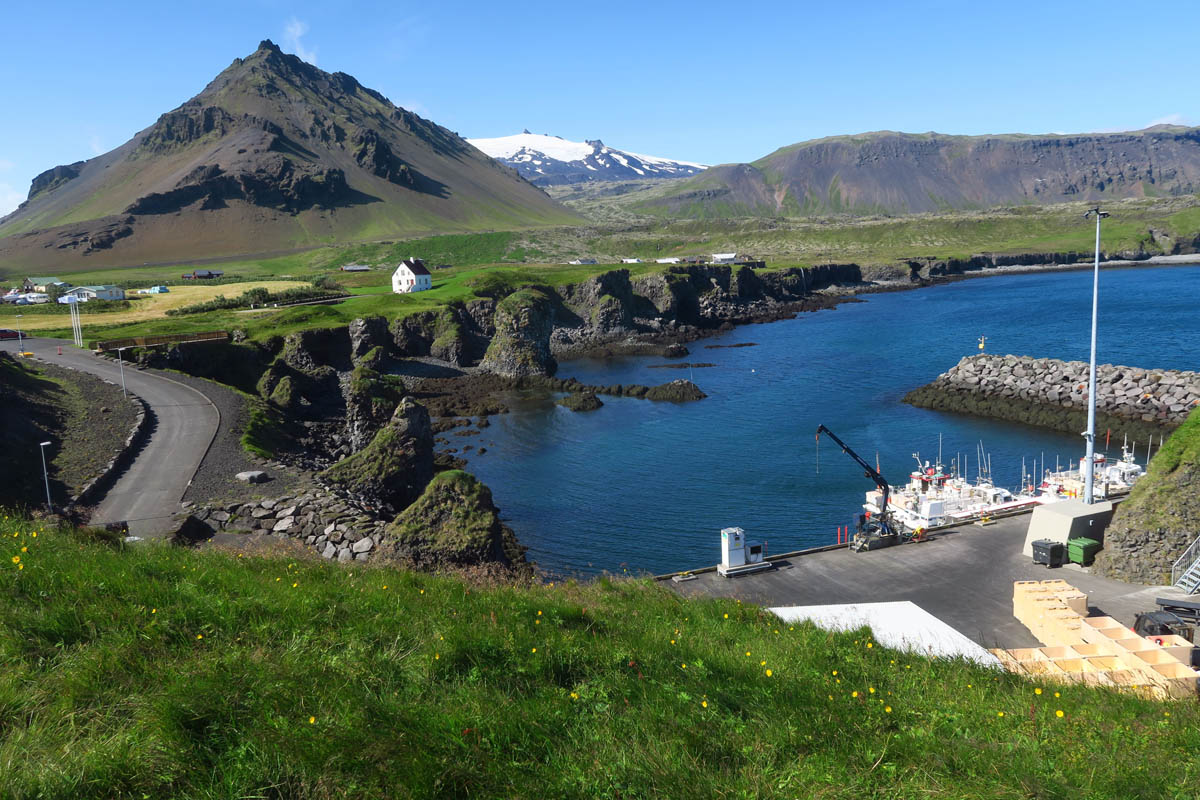 Such a gorgeous coastal town! 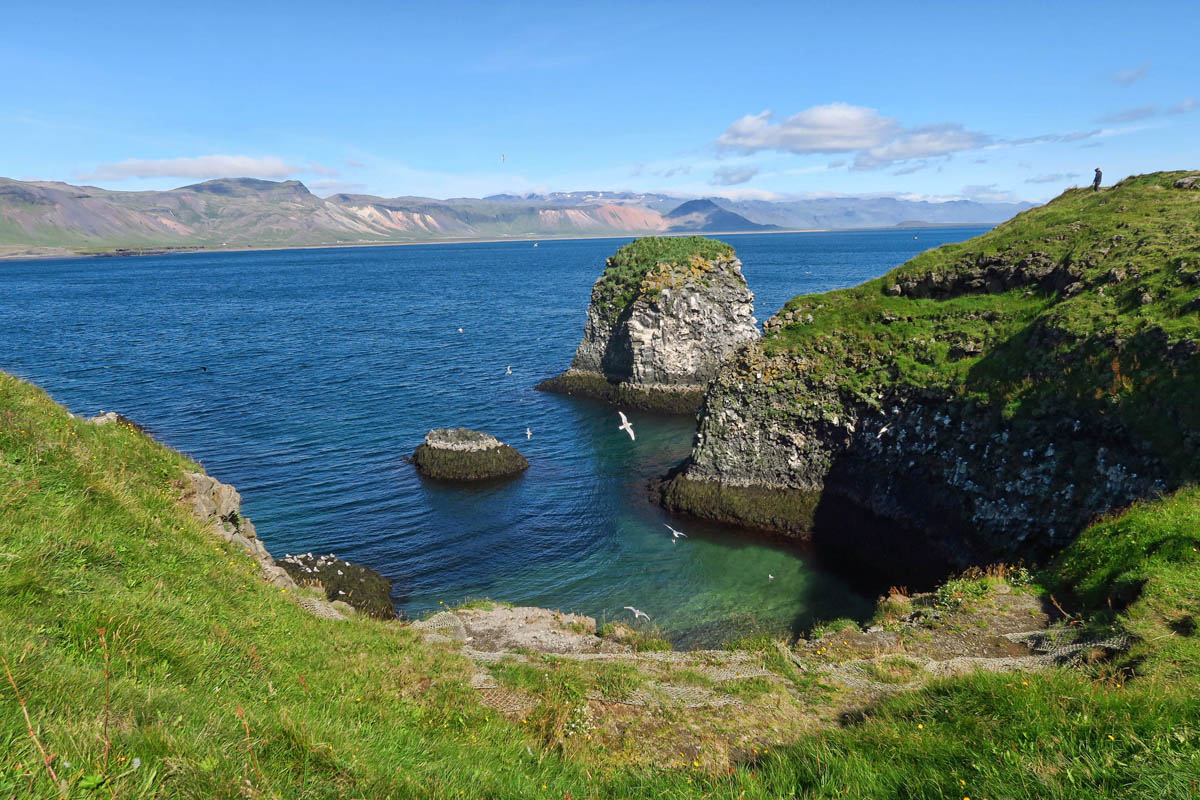 I have stopped in Arnarstarpi because there is a 4 mile RT coastal hike that goes to the nearby village of Hellnar that I want to do. 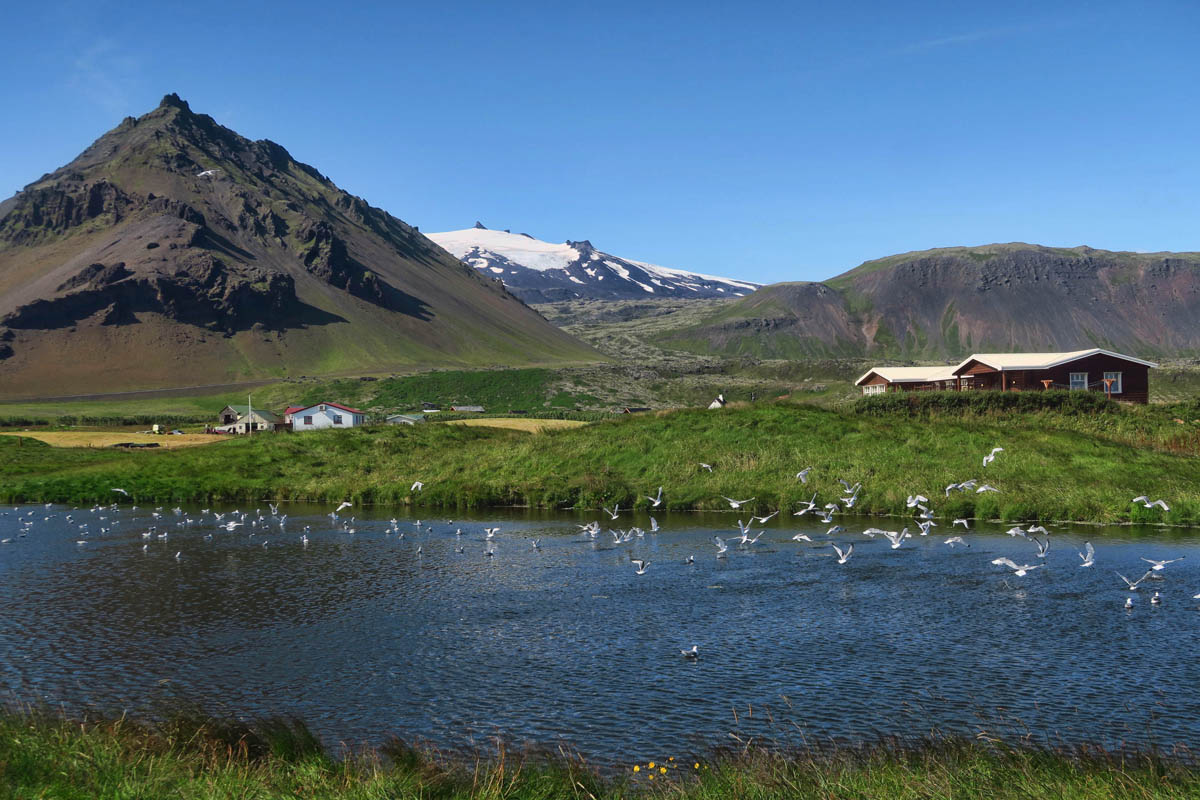 The area between the two villages is a nature reserve, so there is a lot of birdlife. 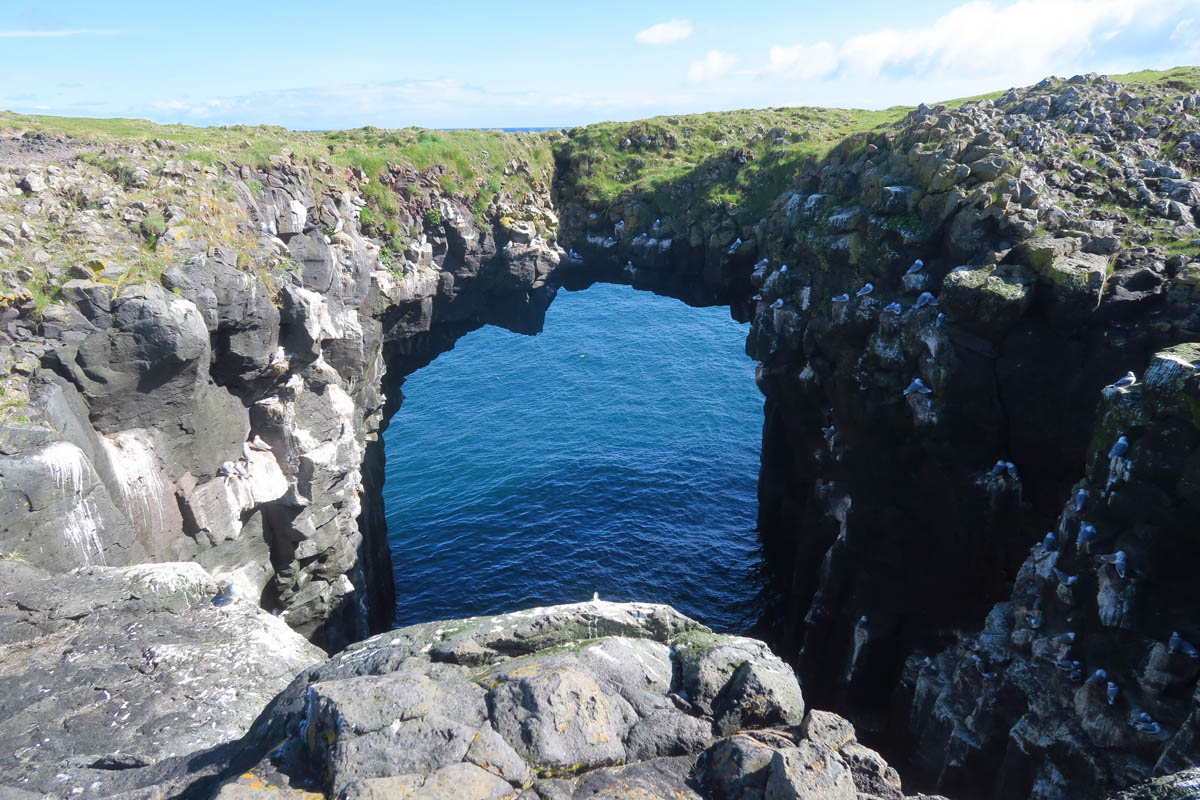 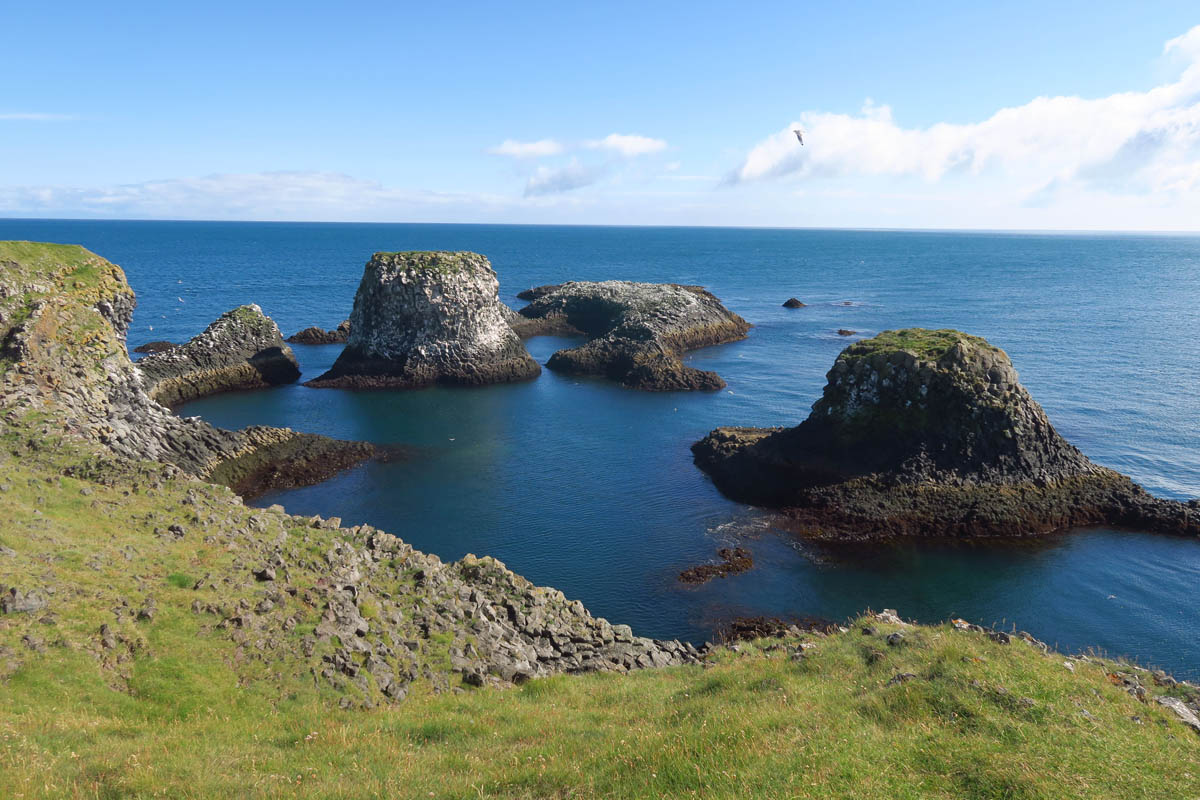 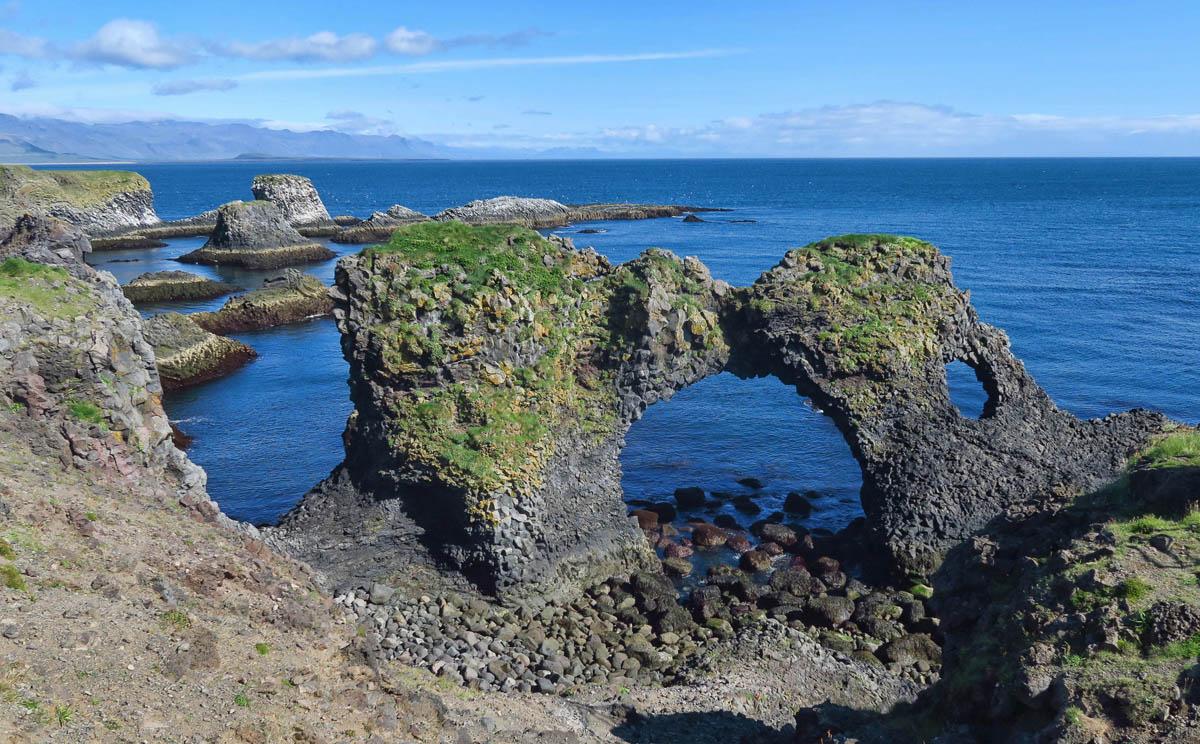 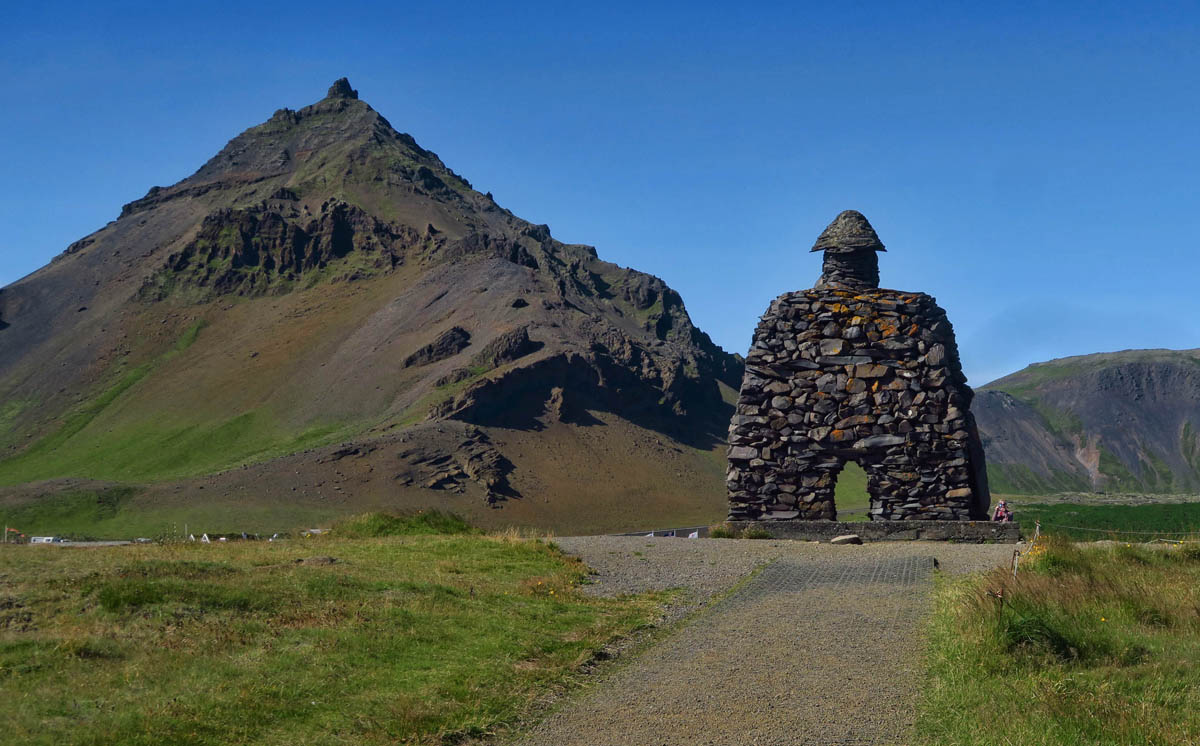 This structure is the effigy of Bárður Snæfellsás, settler of this area, half a troll and half a man. Part of the Icelandic sagas. In the background is Mt. Stapafell, pyramid-shaped volcanic mountain. 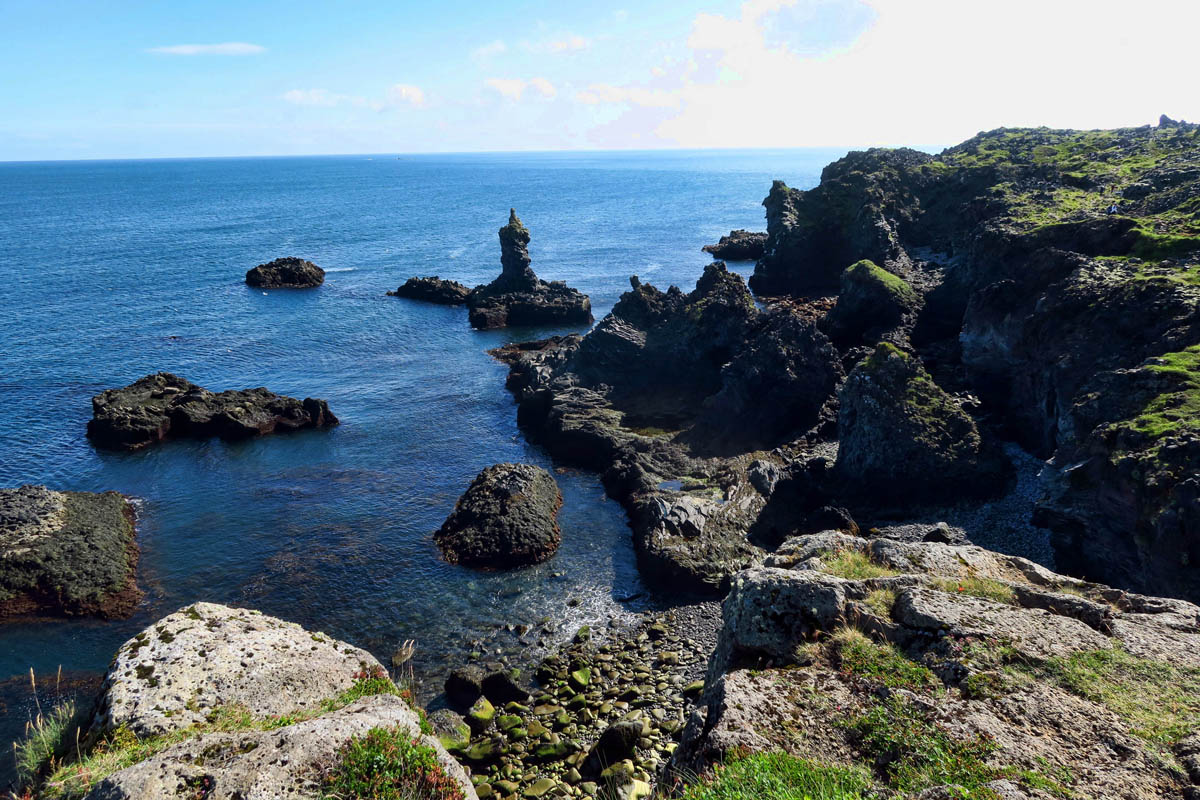 The path travels through a pretty serious lava field with some ups and downs, twists and turns. 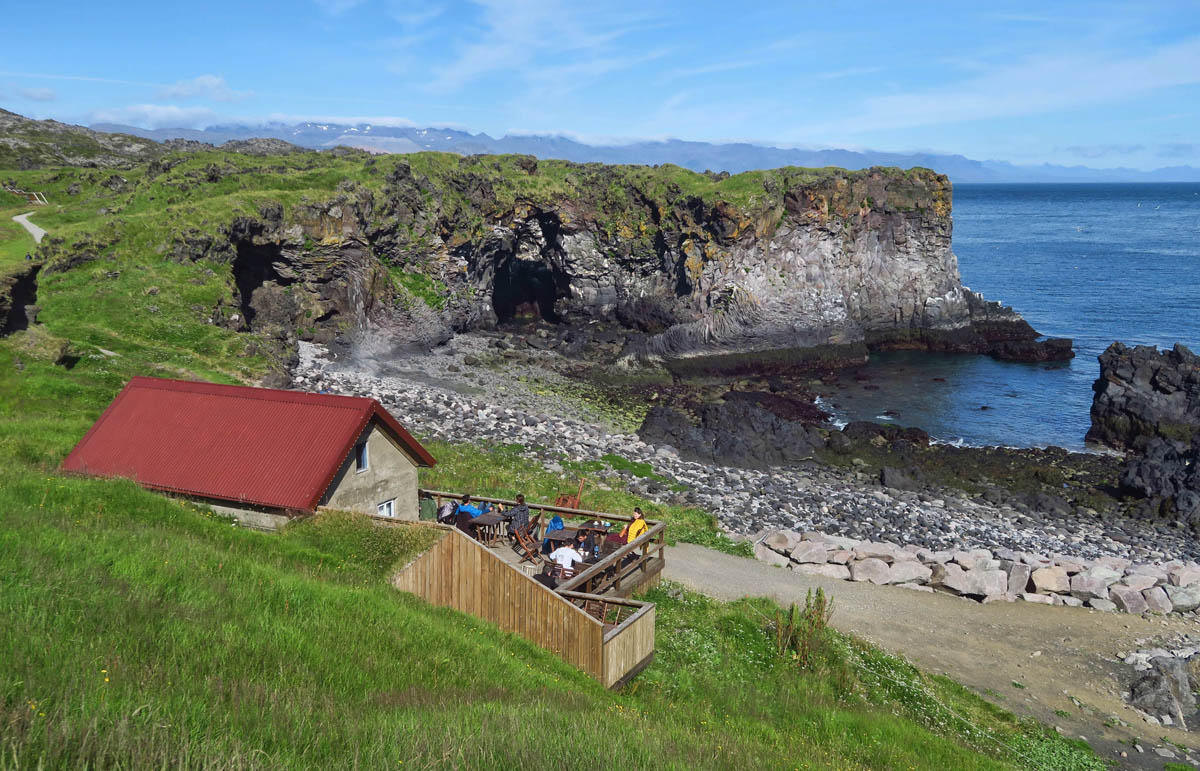 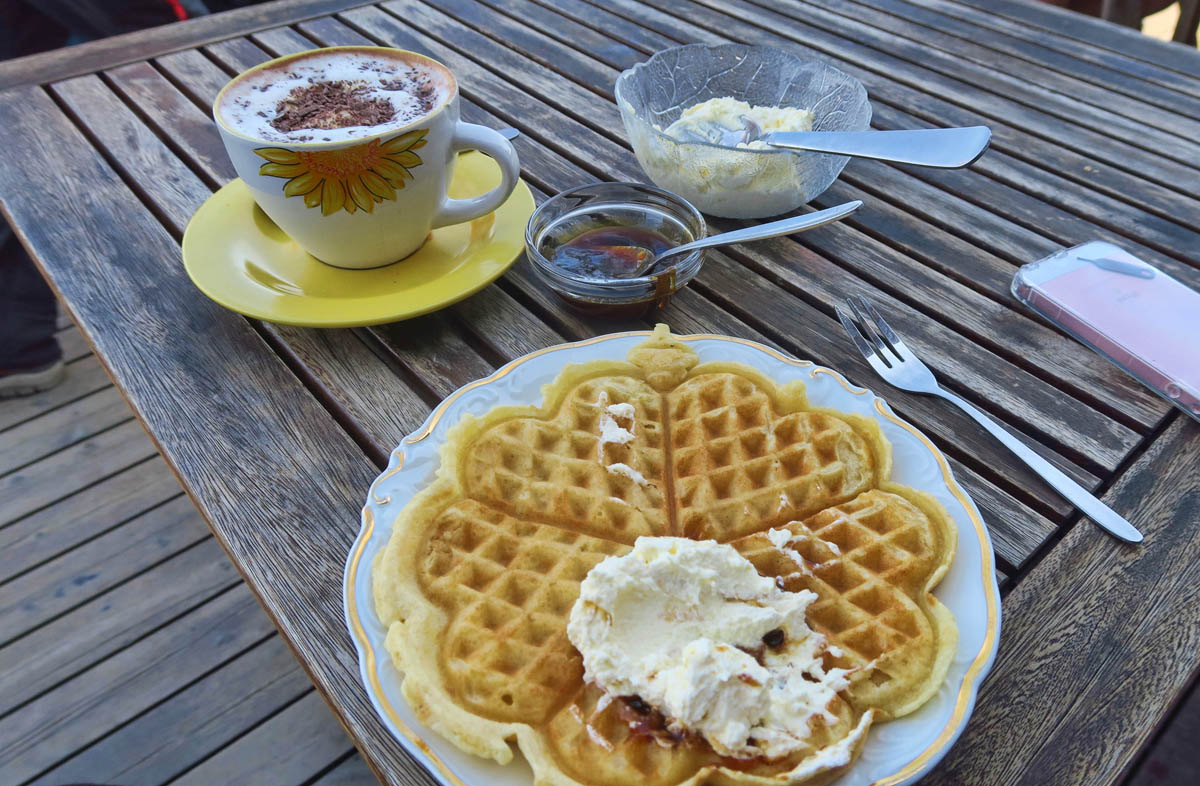 Swiss Mocha hot chocolate, and a waffle with delicious rhubarb jam and real whipped cream. I have never been a fan of rhubarb, but I am now! 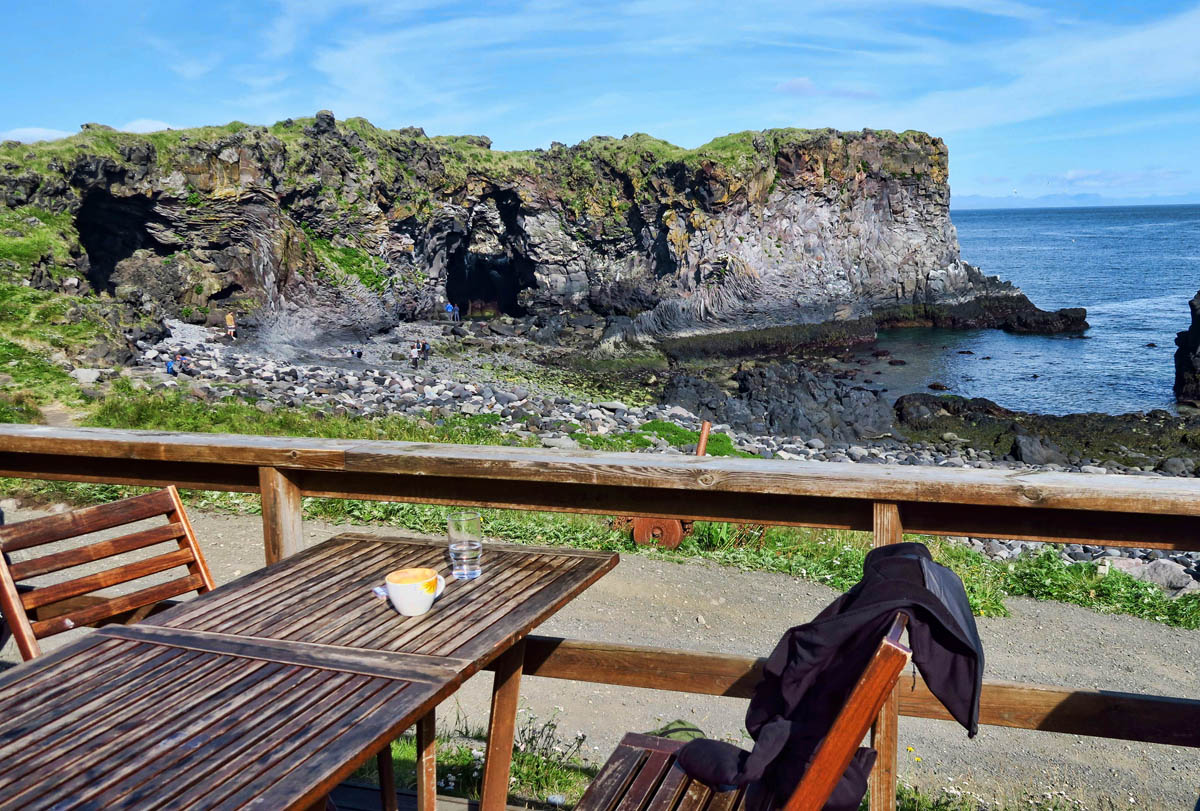 What a setting! Anything would taste good from this vantage point! 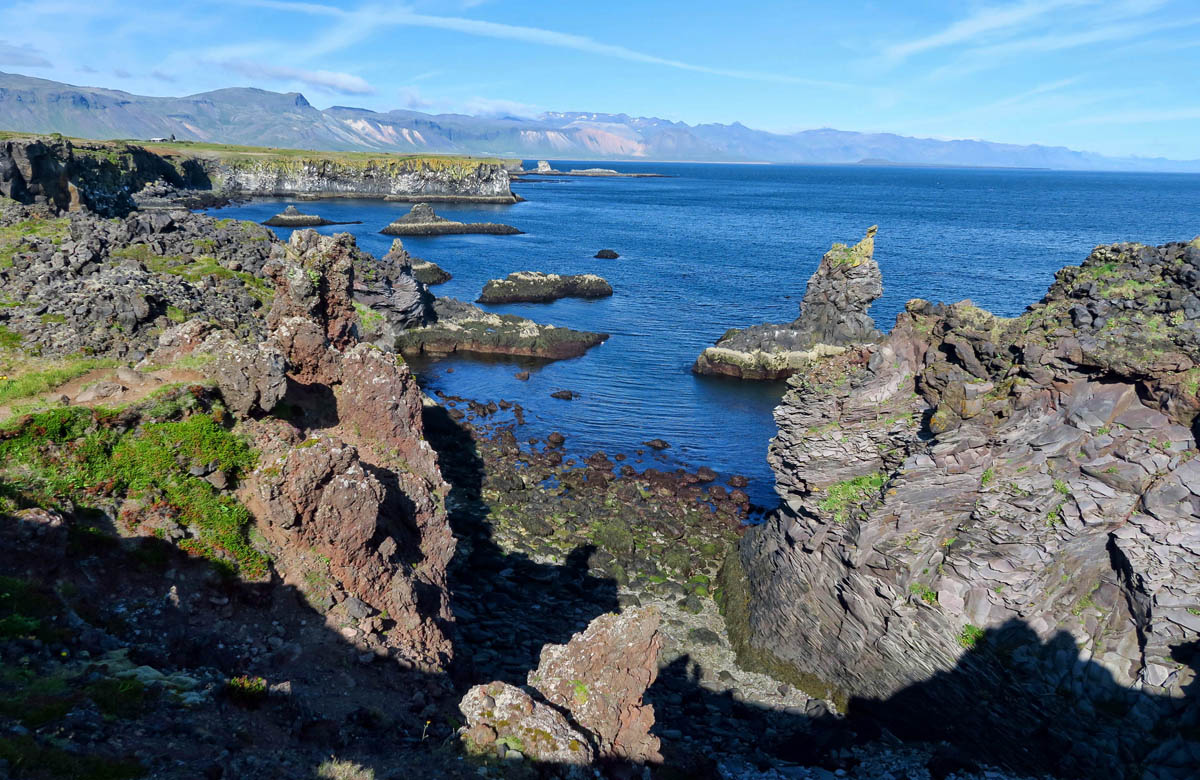 The views are no less spectacular from the opposite direction on the way back. This was one of my most favorite hikes in Iceland! 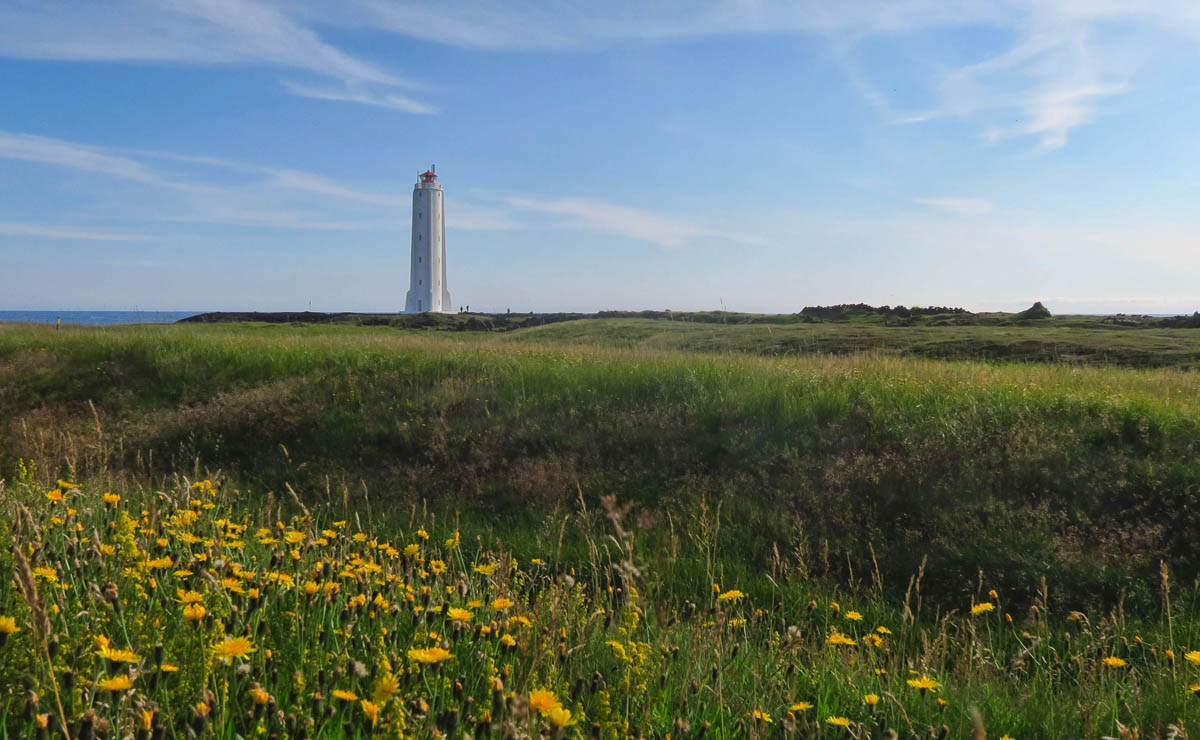 Racing on around the tip of Snæfellsnes through Snæfellsjökull National Park, I stop only long enough to see the lighthouse and make a quick trip through the Visitor Center. I am certain I could have easily spent an entire day just here in the park. 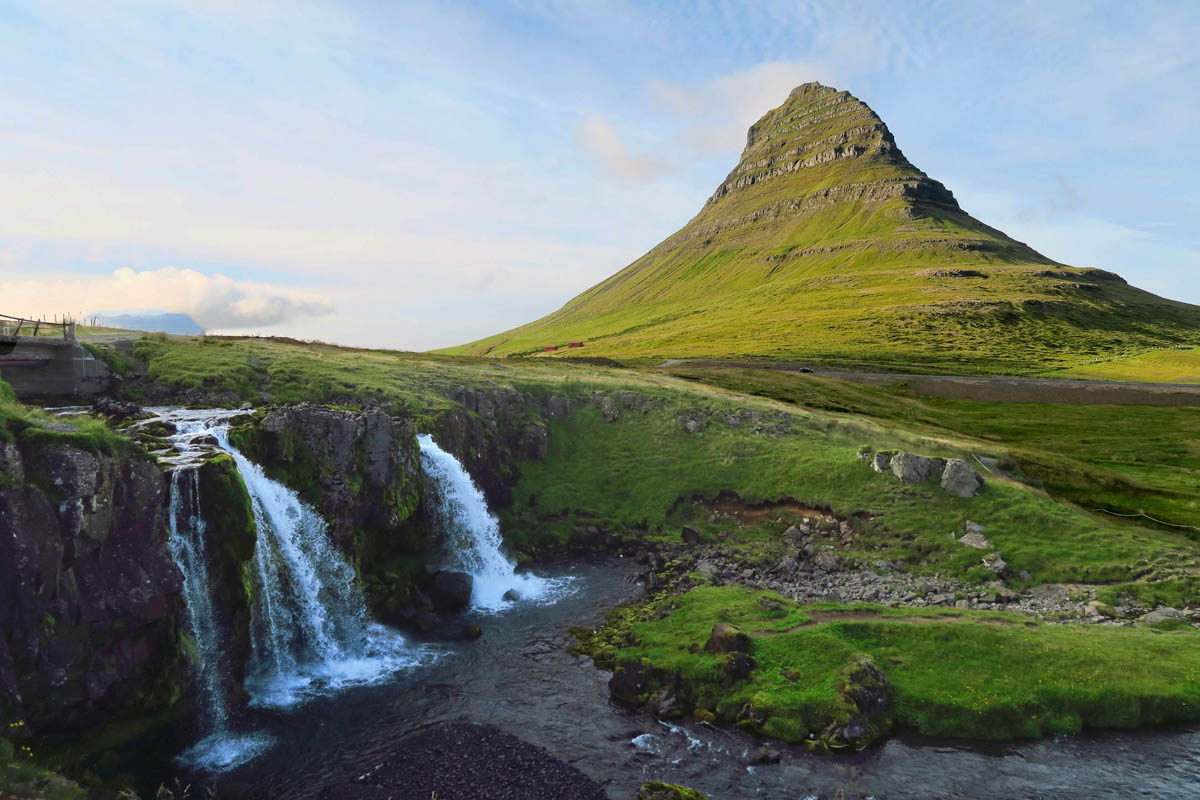 Another iconic stop along the peninsula is Kirkjufell (Church Mountain,) an arrowhead-shaped mountain. It is said to be the most photographed mountain in Iceland, made famous by being featured in Game of Thrones, though I never saw the series. 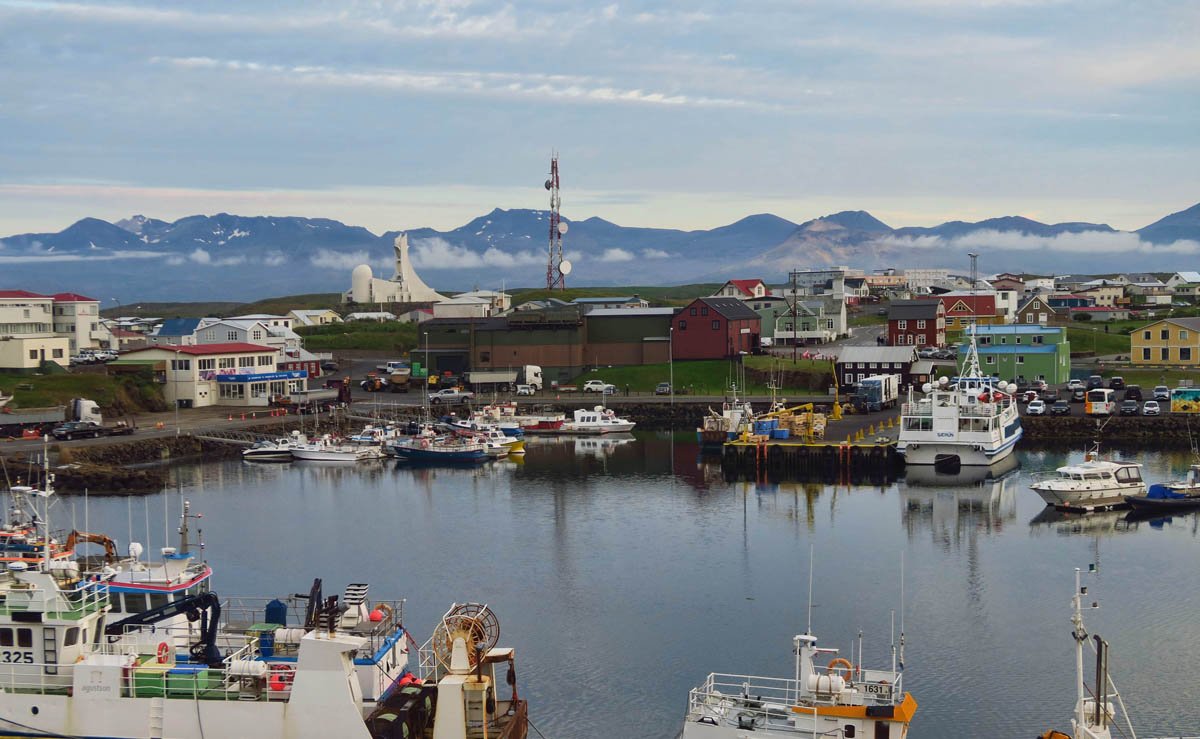 I made it three fourths of the way around the peninsula when I had to stop because it was getting dark. I camped in the cute little coastal town of Stykkishólmur. 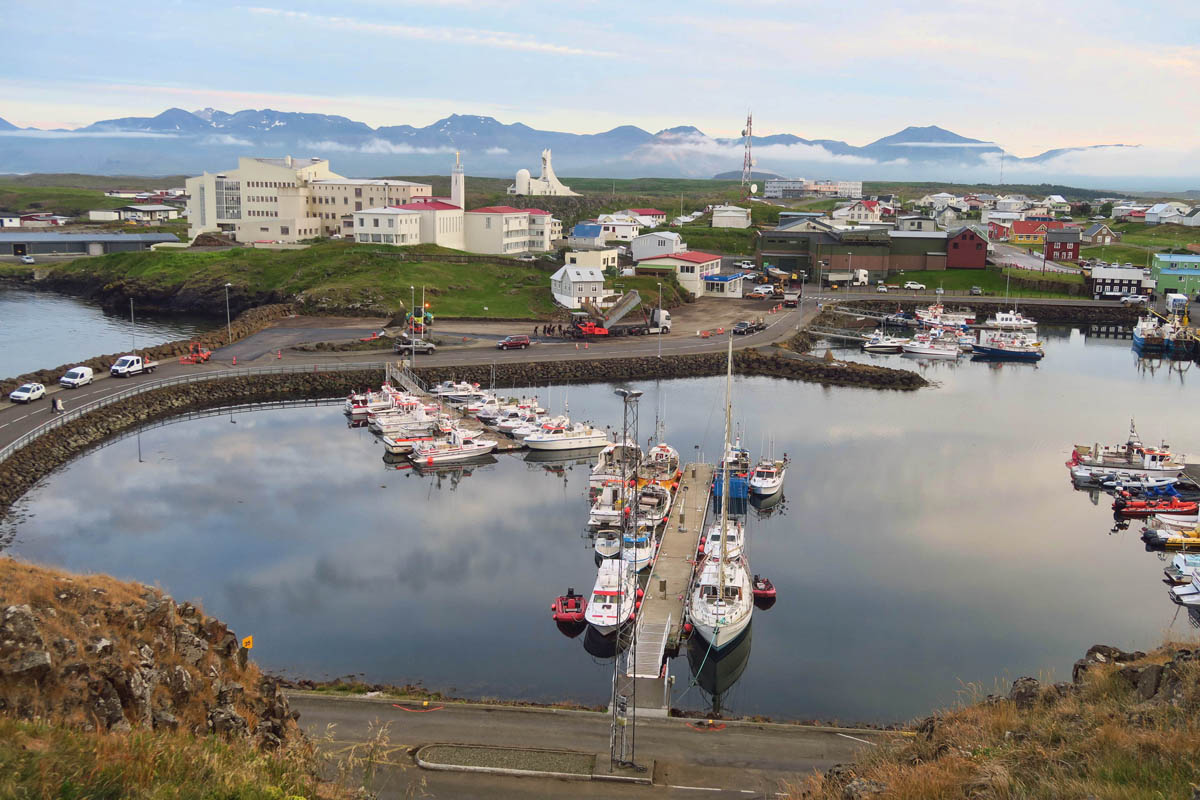 I couldn’t find a place to park here, as many of the spaces were blocked by orange cones. So I asked the guy working at the ferry, and he said “Just move the cone.” Gotta love it! 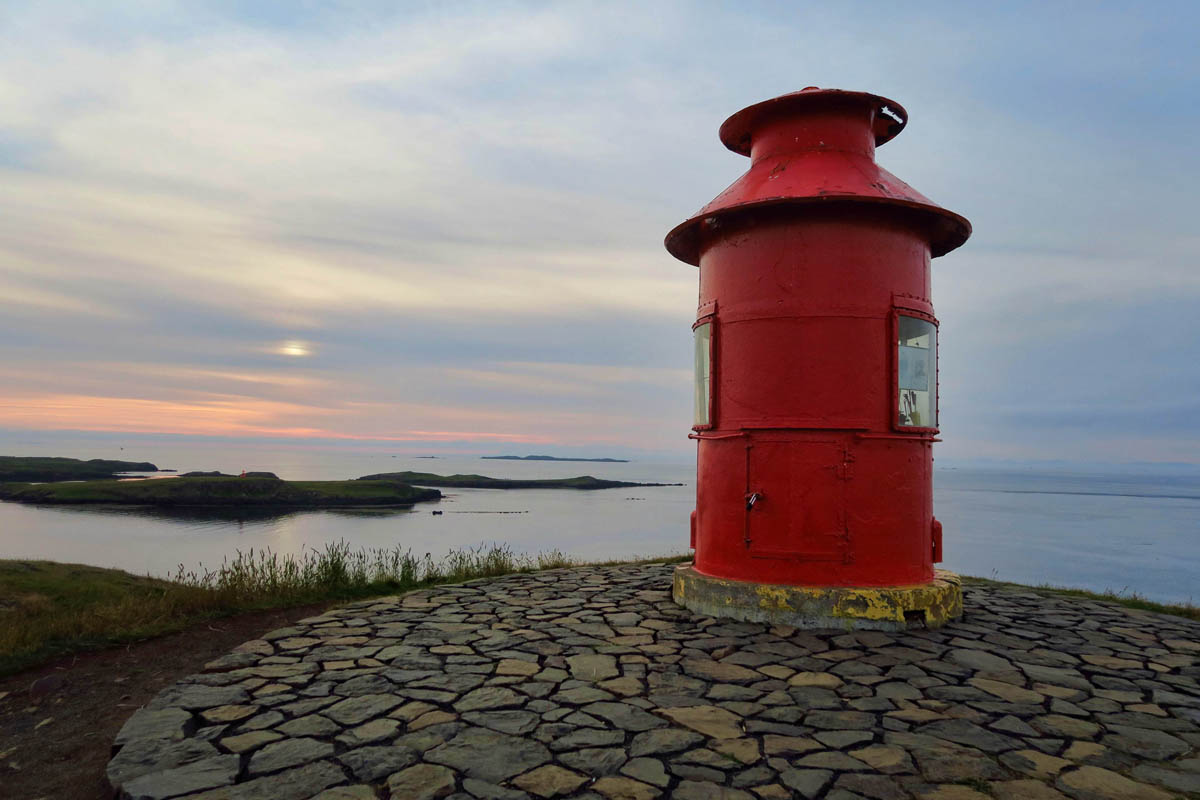 At the northernmost tip of this town is a little island, Súgandisey, where you can hike up for views from this cute mini-lighthouse.

I spent a day exploring this peninsula, cramming everything I could into one day, but I could have easily spent three. The day I explored Snæfellsnes was “shirt-sleeve” weather. I am filled with gratitude for the good fortune I have had with weather on this trip.

Next, we’ll finally hit the Ring Road in earnest…

15 thoughts on “The Snæfellsnes Peninsula”