Back on the 19th March of this year, a new volcano arrived on the scene in Iceland. A recommended video popped up on my youtube home page announcing the birth of a brand new volcano, complete with a live webcam feed from the eruption site. I’m still unclear of the name. I often see it referred to as Geldingadalir. Other times, they call it Fagradalsfjall. Doesn’t really matter, as I cannot pronounce or spell either one. So I’ll just refer to it as “the eruption site.”

What makes this volcano particularly unique is its close proximity to Reykjavik. It’s only 25 miles from the town, minutes from the airport, and can even be viewed overhead from the incoming flight path on a clear day. It’s also just a couple of miles from the road, allowing hundreds of thousands of spectators to hike to various viewing points along the ridge and surrounding area. Just check youtube for hundreds of videos. The volcano must eat drones for lunch.

As the lava had continued its slow crawl toward the ocean threatening the coastal road, efforts are underway to find a solution through various engineering projects including fortification walls and a ‘lava bridge’ to allow the lava to flow over the road. There is also a need for a protective shelter for water pipes, electrical cables, and fiber optics that provide services to towns along the coastal road.

At the time I first heard about the new volcano, I had not begun to think about travel yet in 2021 as I had only recently been vaxed, and was still taking a “wait and see” approach toward any kind of international travel. But I was so intrigued by the live cam video that I kept tuning in. There was something so mesmerizing about watching that live webcam, the red hot lava flowing slowly down the hillside, creating new territory as it flowed, the orange-red liquid repeatedly busting through the black crust forming on its surface as it instantly cooled.

Initially they had a soundtrack playing over the video creating a real “ASMR” experience. I would sometimes even leave the video running in the background, as I found the roar of the volcano to be compelling…until, that is, I learned it was just a recorded soundtrack loop added to the live cam. 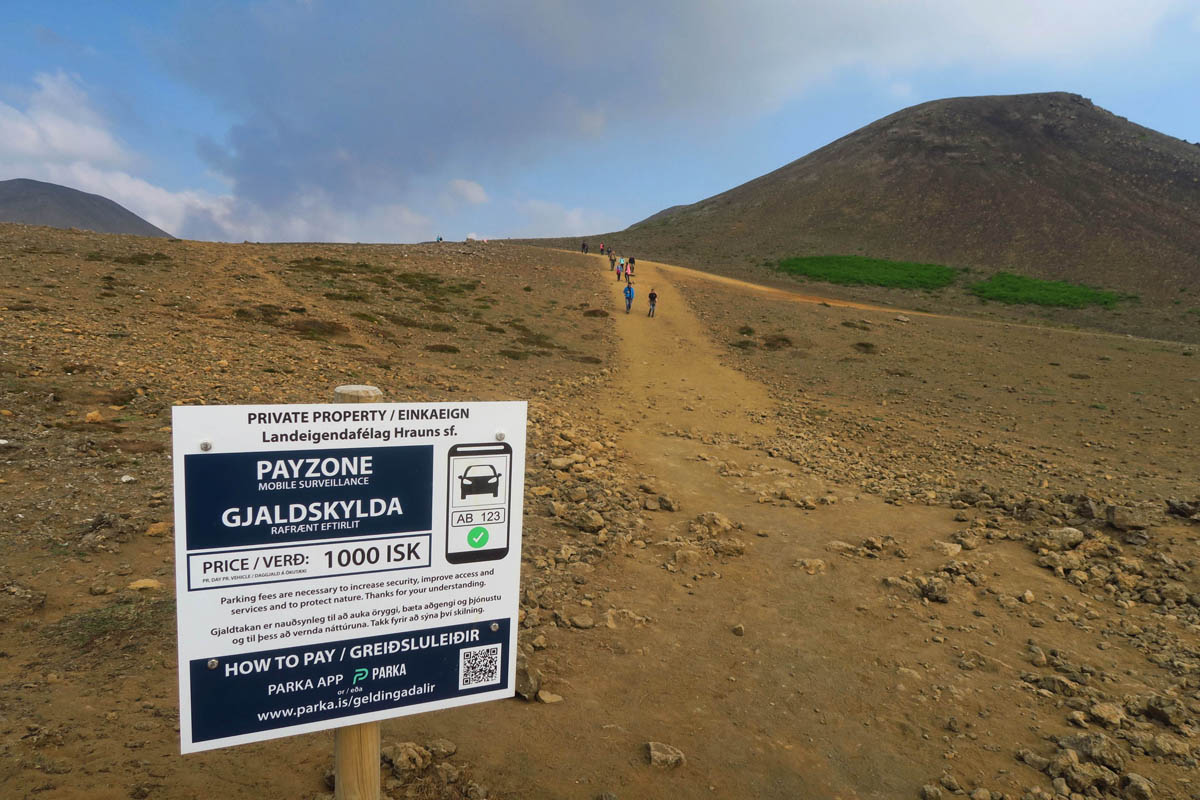 Leaving no doubt that you are in a pay parking area. 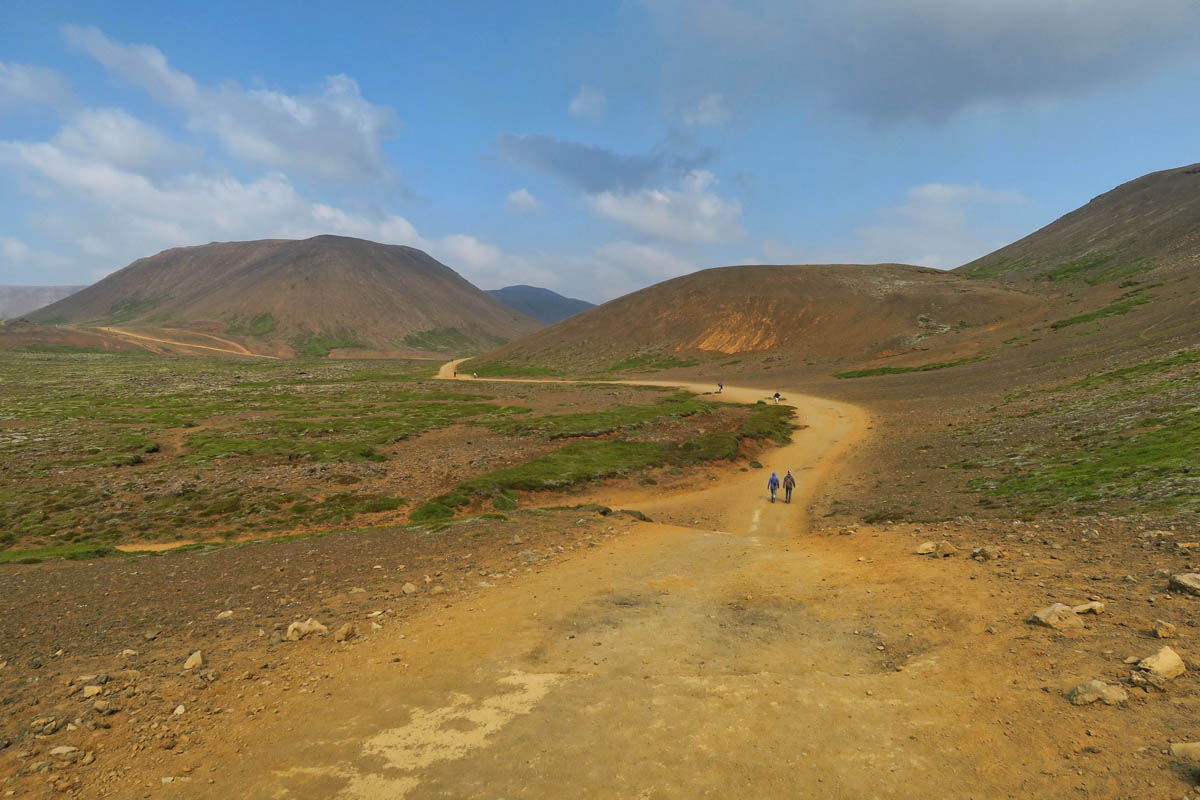 It was a happy stroll for the first half hour. 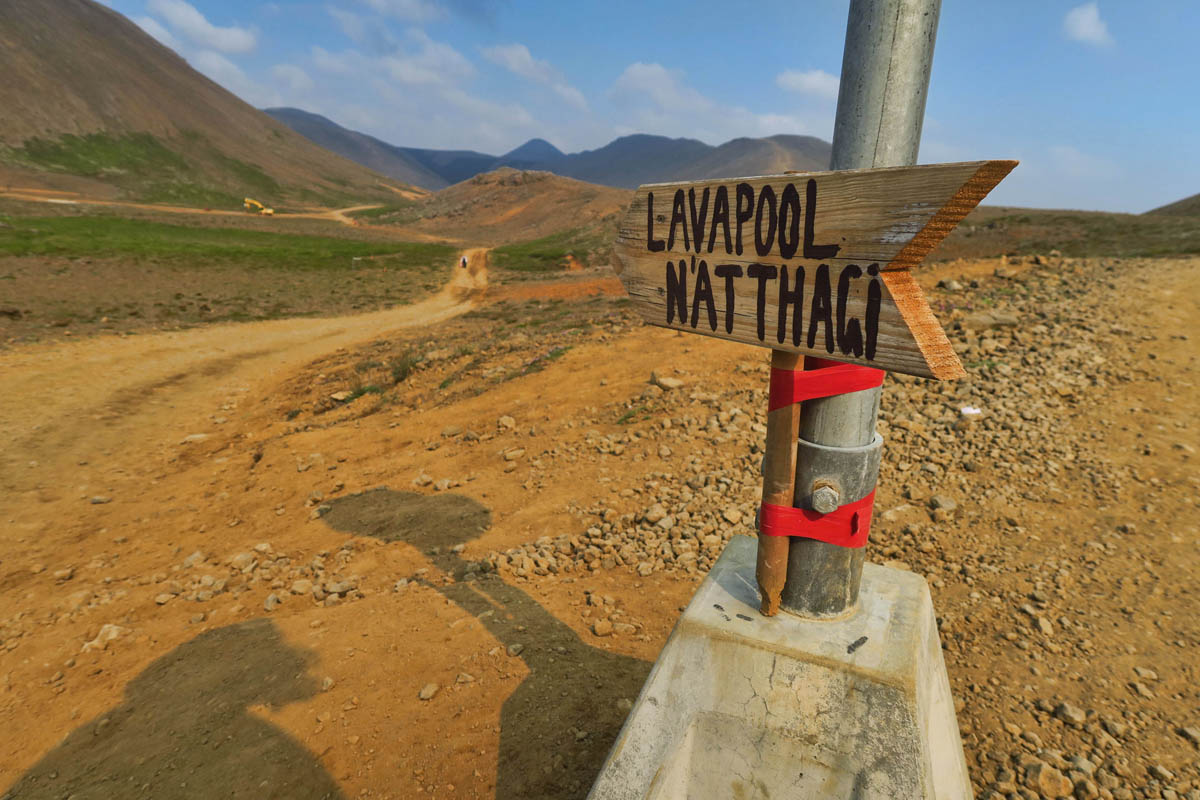 This way if you only want to visit the lava field and not climb to any of the view points. 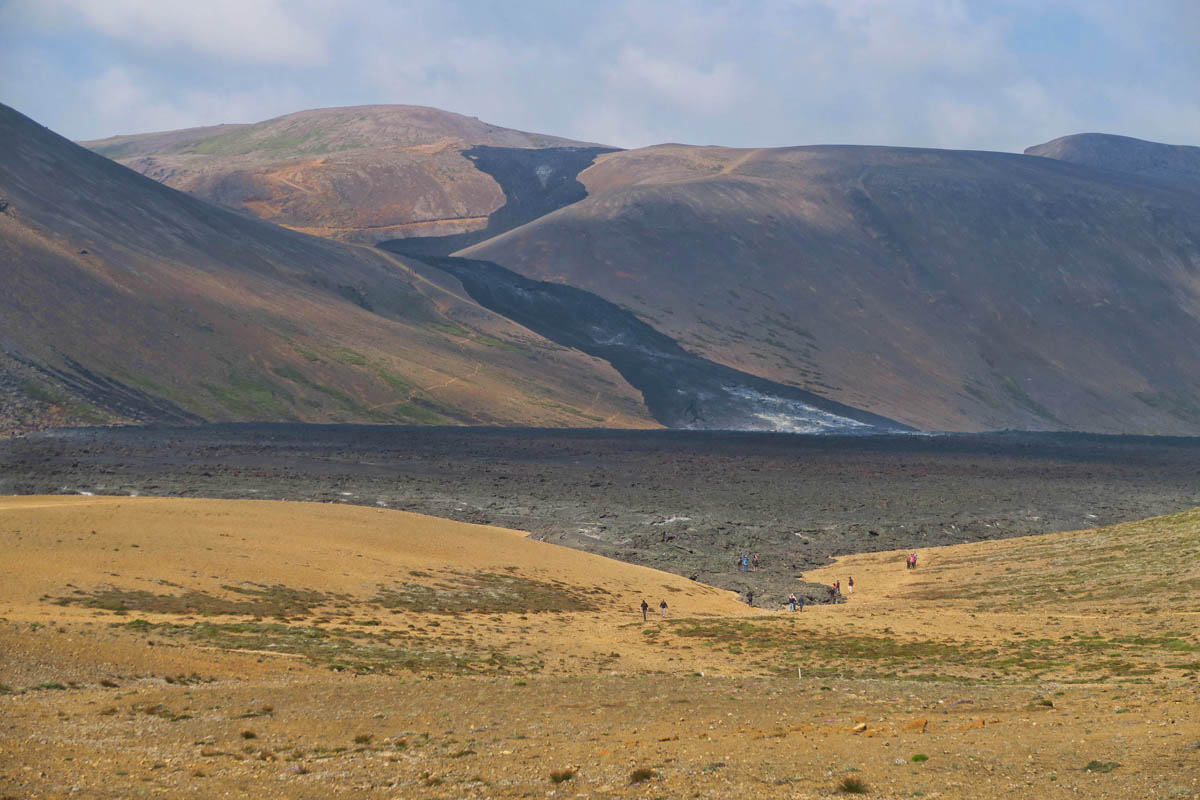 The lava field comes into view. Note in the foreground the idiots walking on the lava. There is lots of public shaming taking place on youtube, as officials ask to please STAY OFF THE LAVA! While the surface is cool, it could be deadly hot just beneath the thin crust.

Since March, I have often checked in on the live webcam to see what’s happening with Iceland’s newest attraction. I even started watching a daily live stream, and joined a Facebook group, becoming familiar with the different vents and fissures evolving at the eruption site, following the discussion as experts would drop in from time to time and speculate on the volcano’s lifespan.

So once I picked up the camper van, the eruption site was at the top of my itinerary. I checked the webcam before I made the drive there, and it was a beautiful fountain of red, yellow, and white-hot on the screen, so I input the coordinates for Path C to “antenna hill” in my GPS, eager with anticipation.

It costs a little under $8 to park in the “official” gravel parking lot at the base of Path C. This is payable online via the Parkka App, a convenient smartphone app used throughout Iceland for attractions requiring paid parking such as the national parks. I secured my spot, paid for my parking, and commenced packing up a fat daypack full of anything and everything I could need up the hill. While it was a lovely blue sky day in the photos, there was a stiff blustery wind blowing which meant it would only worsen as I climbed the hill. So I packed up my rain pants and rain jacket to serve as a windbreaker, hats, gloves, water, CLIF bars, and my merino wool buff. 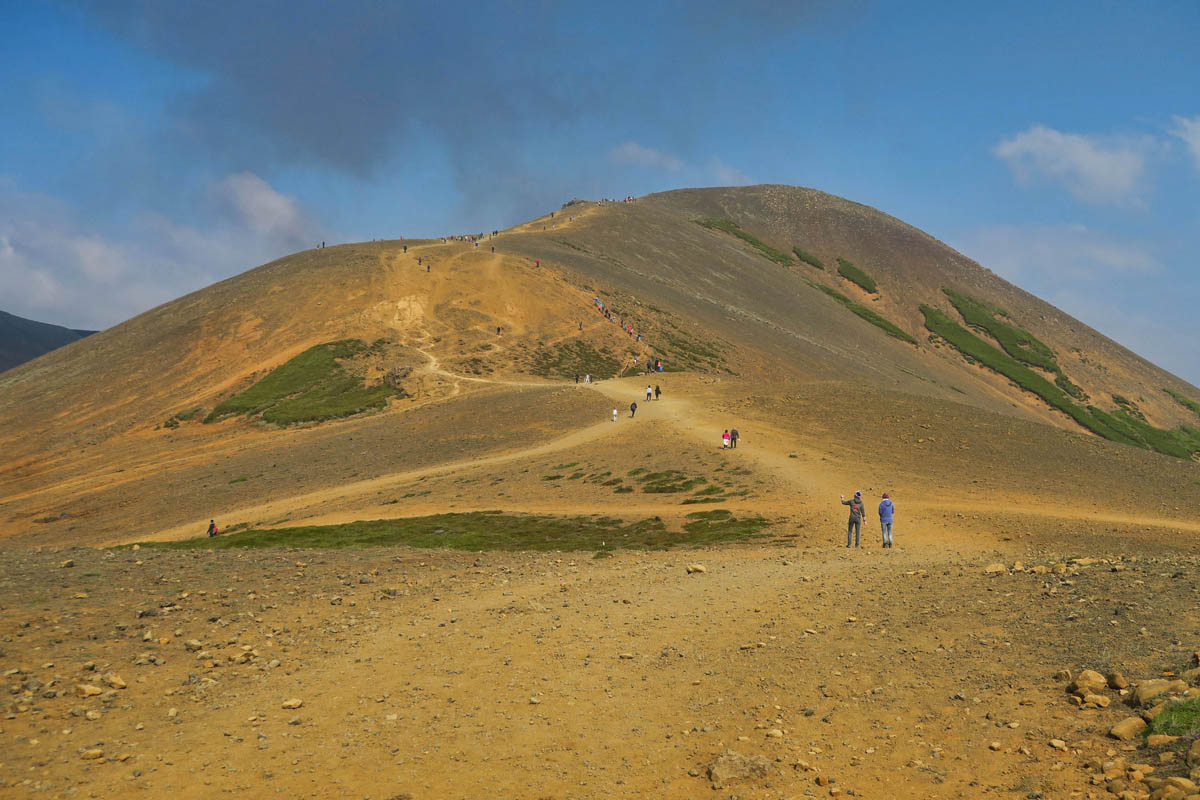 I would still do the hike, even with no spewing magma. 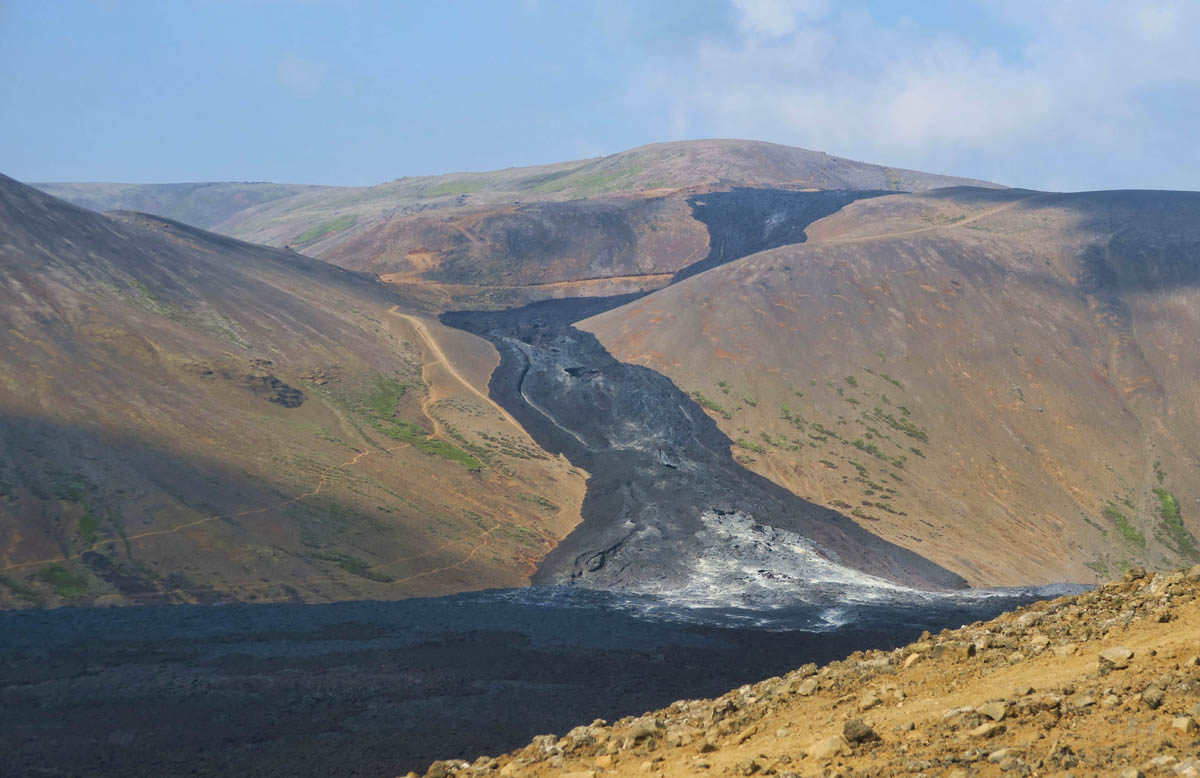 From the kiosk: “Iceland is an active volcanic island along the earth’s longest and mostly sub-oceanic mountain ranges, the Mid Atlantic Ridge. it’s an ever-widening bridge between Europe (the Eurasian Plate) and America (the North Atlantic Plate.)…” 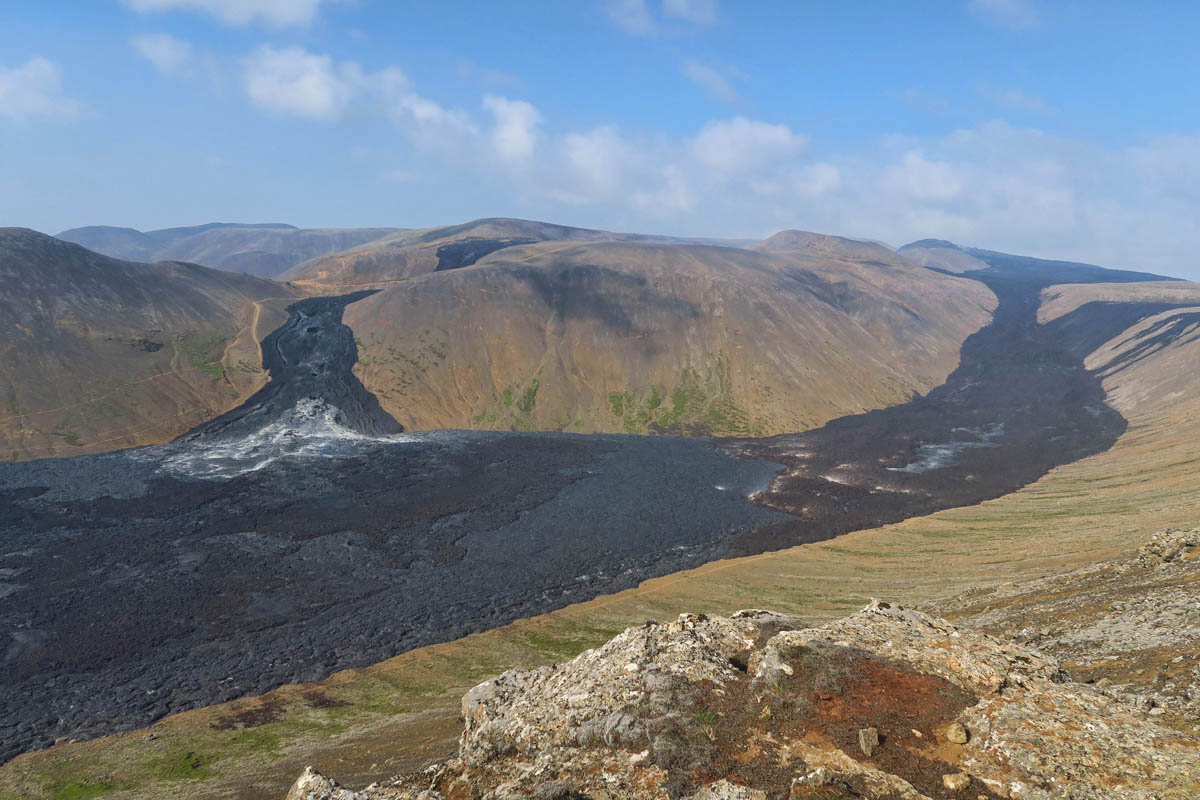 “…These two tectonic plates are violently forced apart by boiling magma, rising from the earth’s mantle, separating by as much as 2cm every year. The edges of these plates, known as plate boundaries surface in the southwest of the island in the Reykjanes peninsula.” 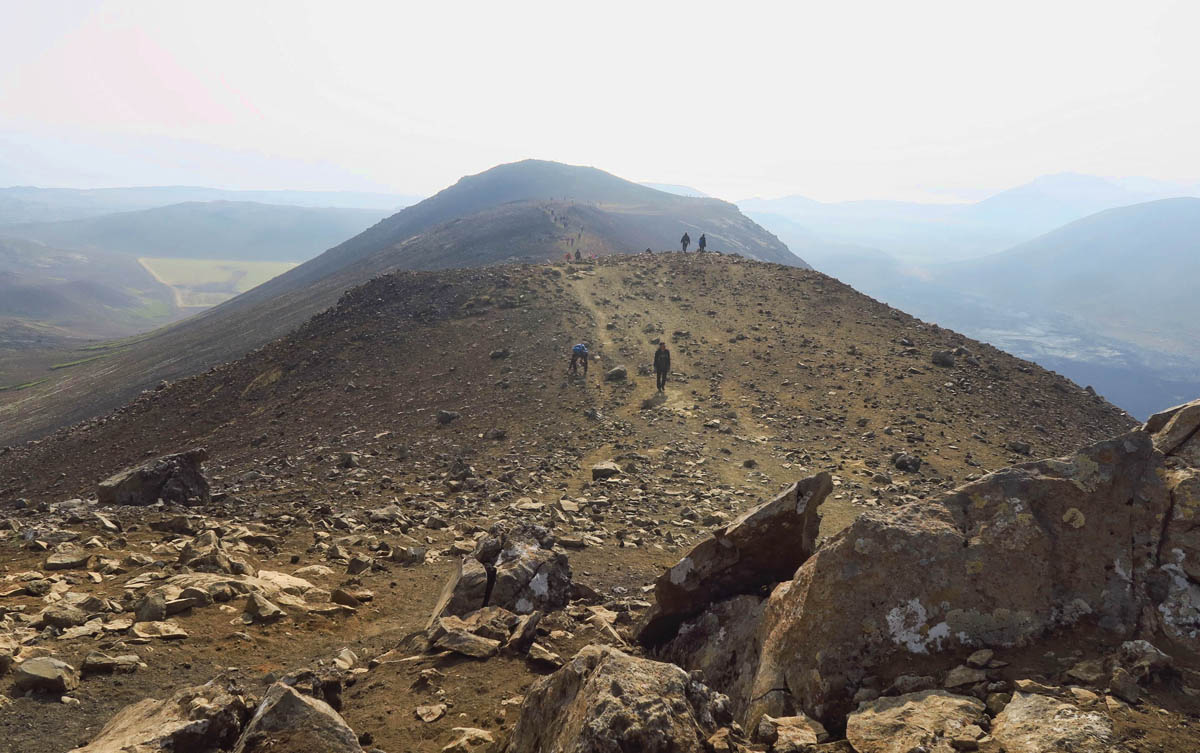 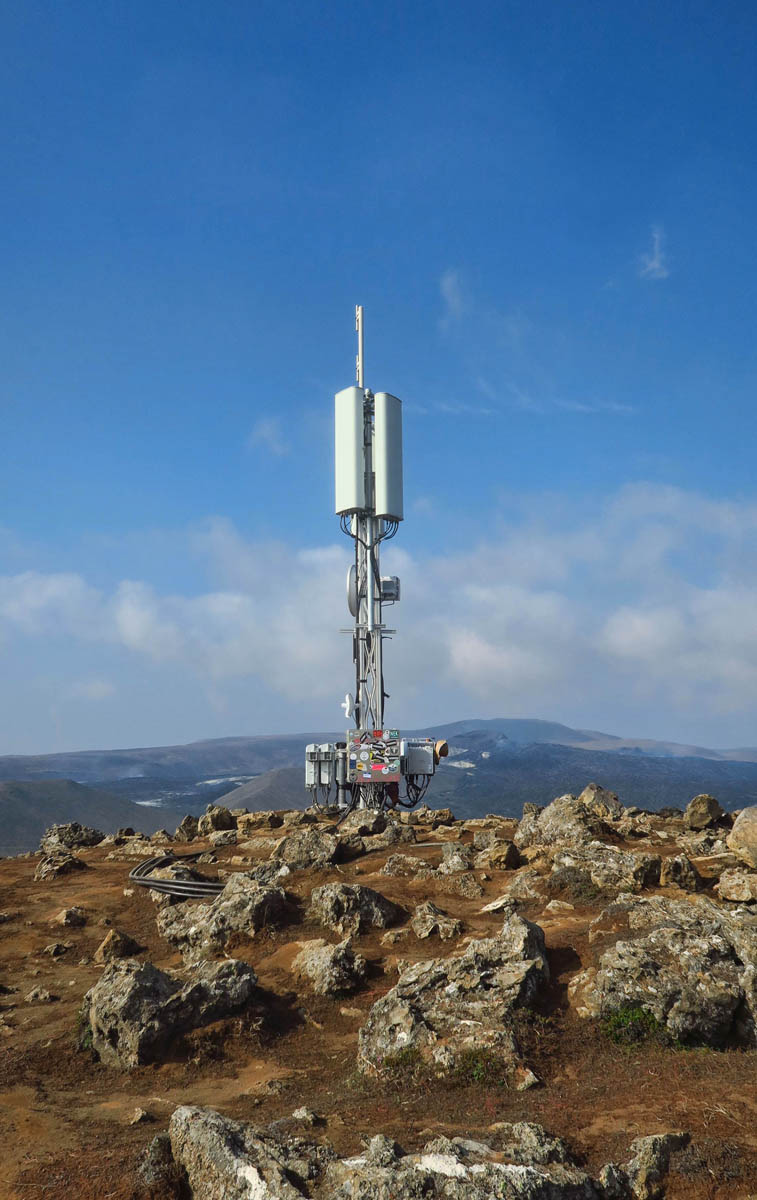 The second hill is called “antenna hill” for good reason. This is one of the webcams broadcasting live footage.

But I had spent the morning at the Blue Lagoon, and had not had anything to eat all day. So I checked the live webcam once more…yep! Still spewing! Then I settled back in for a ham sandwich. No real rush, I thought. It was reported to take about an hour and 45 minutes to reach the top of antenna hill, and I hoped to go beyond that to the edge of the Merardalur valley. This would require topping three hills, so best to fortify myself for the long hike ahead.

It was an easy and pleasant stroll for the first half hour. The air had the eerie sulfur smell of a burnt match. Soon the view of the cooled lava came into view, and the lava-filled valley unfolding in front of me was vast! But then the climb began. While there was a clear path, it was rocky, so my pace slowed a bit so as to not risk a turned ankle. Then I came to the “ropes section.” This part was not so easy, as others on the path were not keen to stick to “right side up” direction. So I had to leave the rope often or risk getting knocked off it by those sliding back down.

All along the path, I got several encouraging words. “Keep going! You are almost to the top of the first hill!” “You’re almost there! You’re about to get a view of the crater. It’s so worth it! ” So I trudged on.

But then I crested the hill, and the smoking black hole of a crater came into view. “Where’s the lava??” I asked a couple coming back down the hill. “It just stopped!” My heart sank to meet my rising ham sandwich. 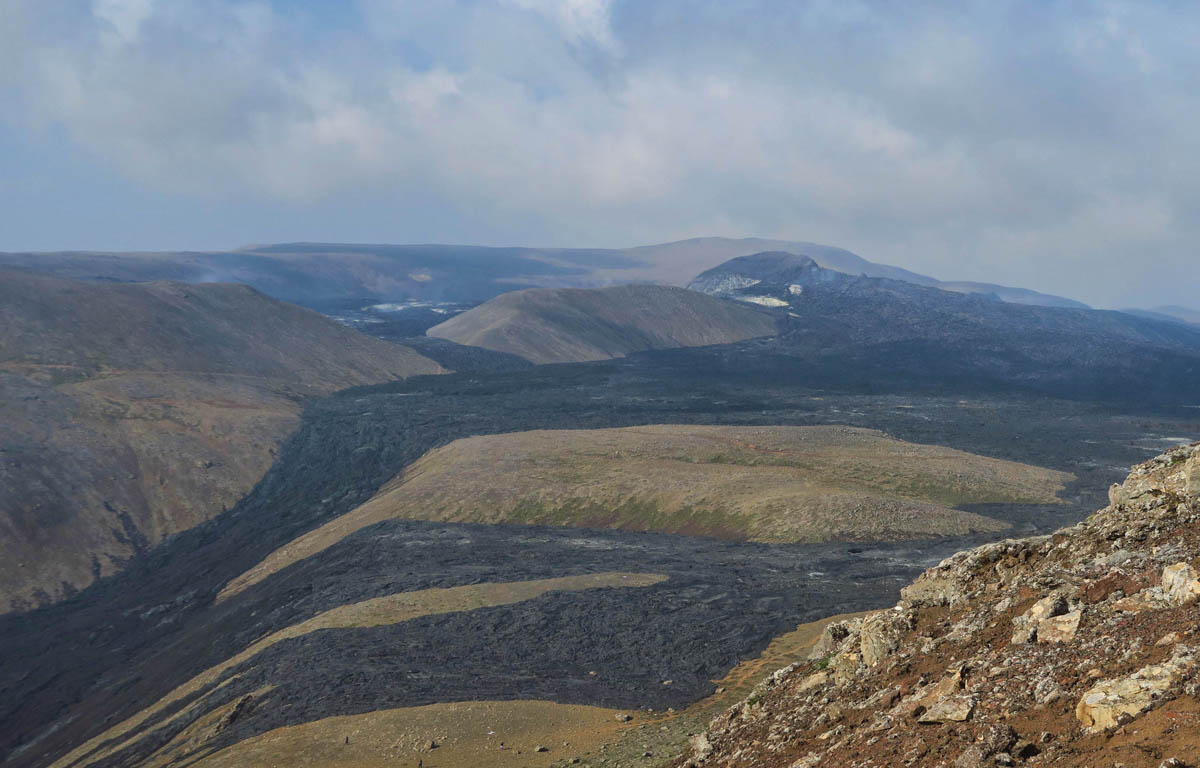 I didn’t realize it when I snapped this picture because I was “looking for lava in all the wrong places,” but I am looking at the crater. Do you see it? 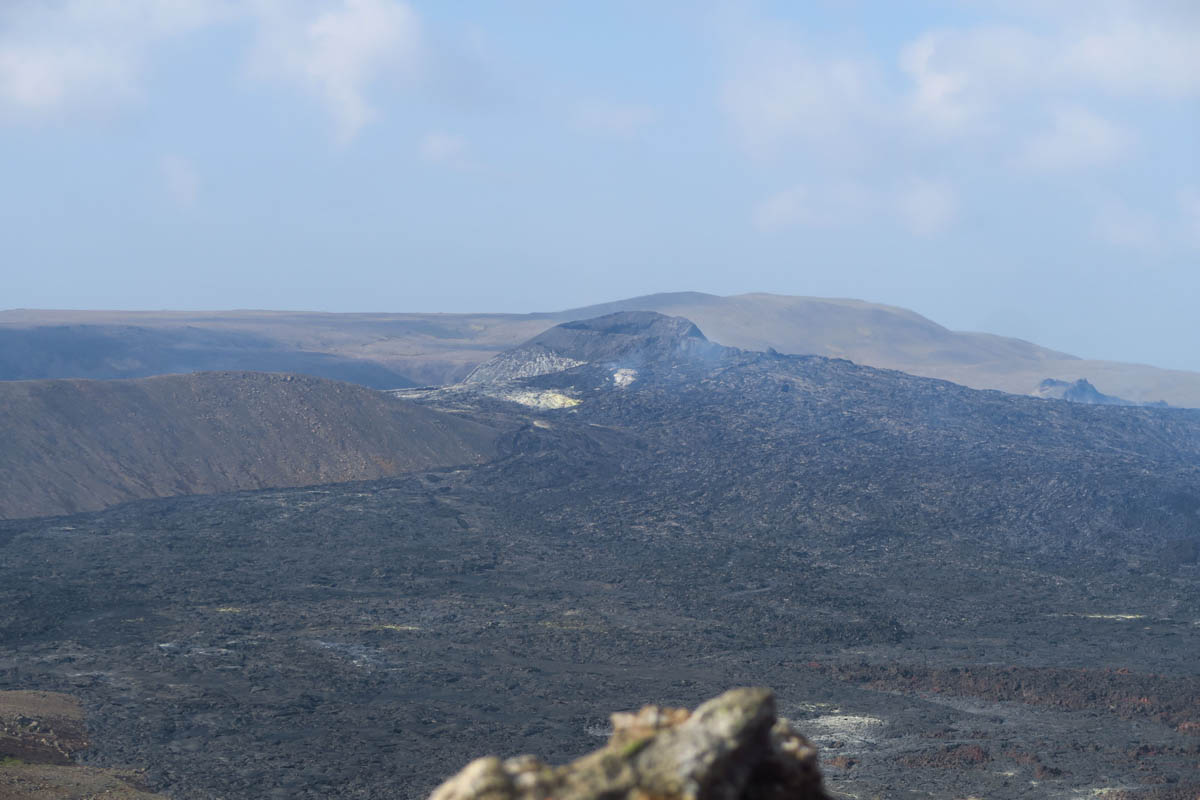 There it is, the big, black smoking hole in the upper middle of the photo. 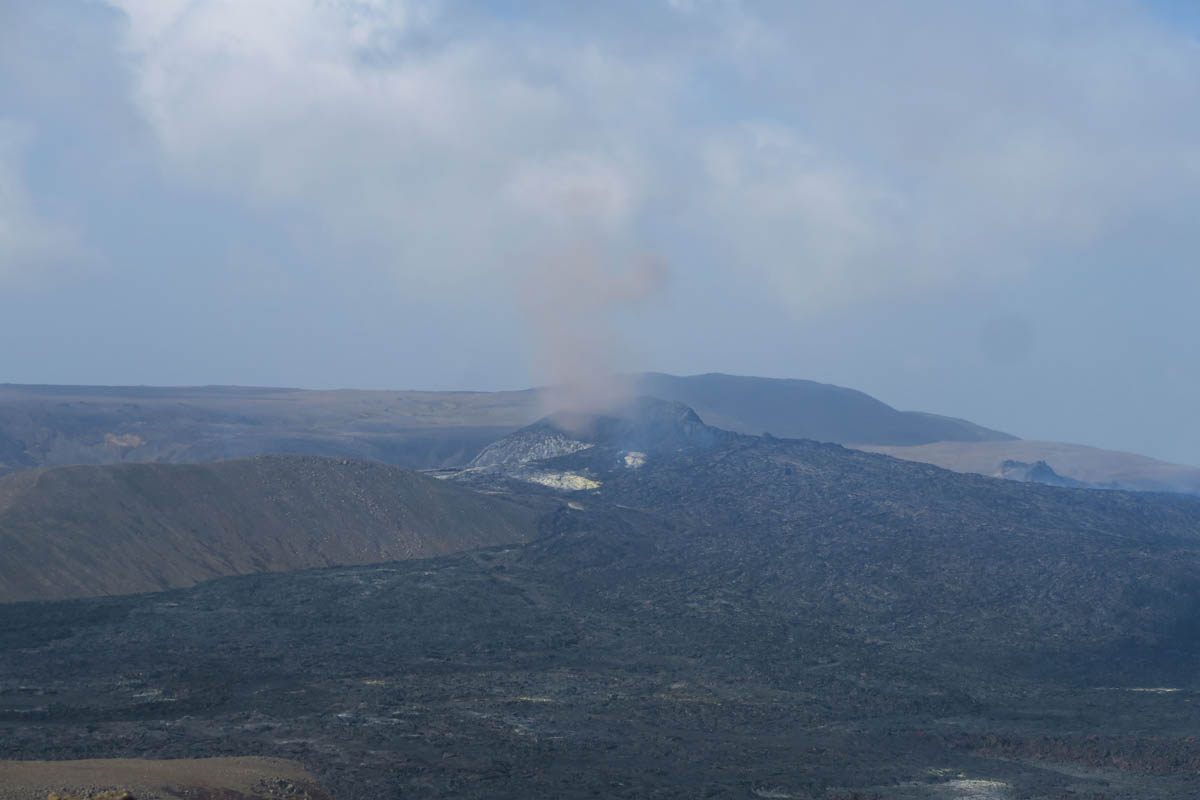 This puff of faint orange smoke was all I would get for my two hour wait. Actually, I did see a small tendril of lava, but it was too quick for my camera.

I sat at the top of antenna hill for two hours in what had to be gale force winds waiting for something to happen. It was so windy, I found a large boulder to hover behind, peeking up every few minutes to check the status of the smoking hole. Nothing. The moral of the story? “He who hesitates (even for a quick ham sandwich) is lost.” 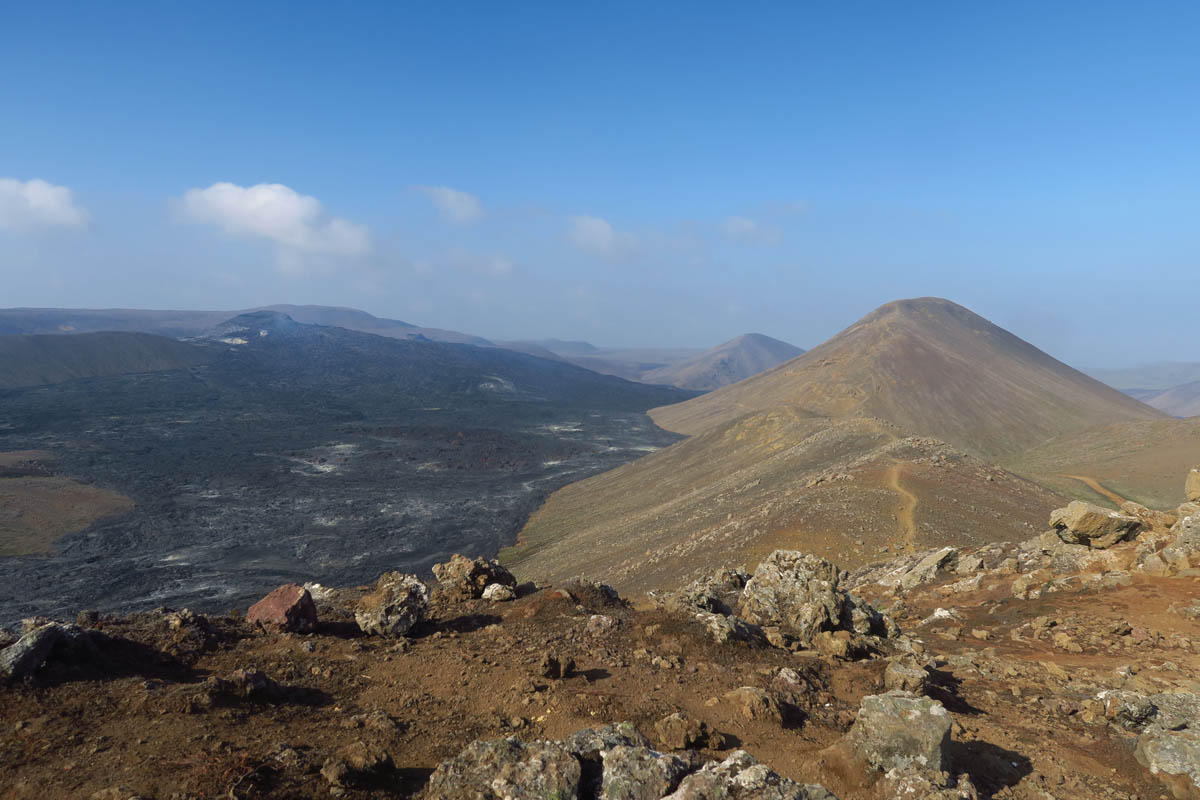 I was hoping to continue on to that furthest most hill, but what’s the point now? It’s cold, and the wind is whipping me into exhaustion. 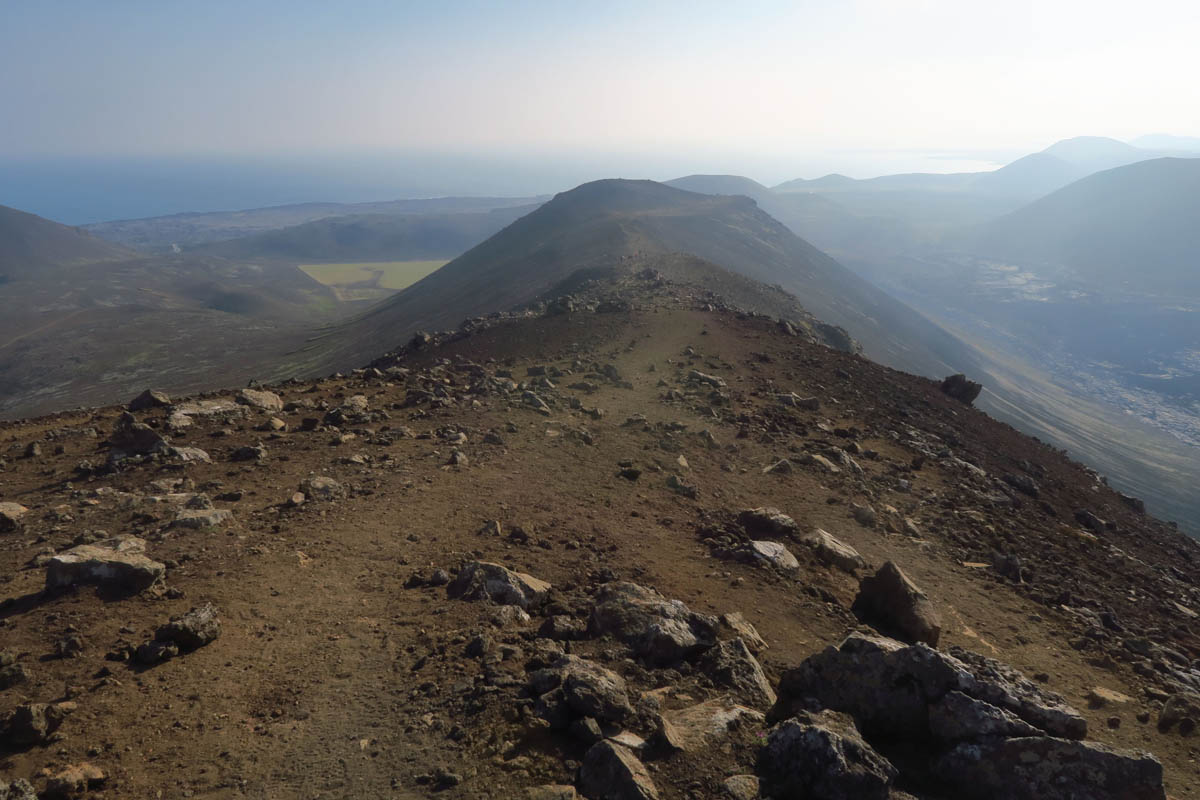 The hike back down is defeating, demoralizing, and difficult. 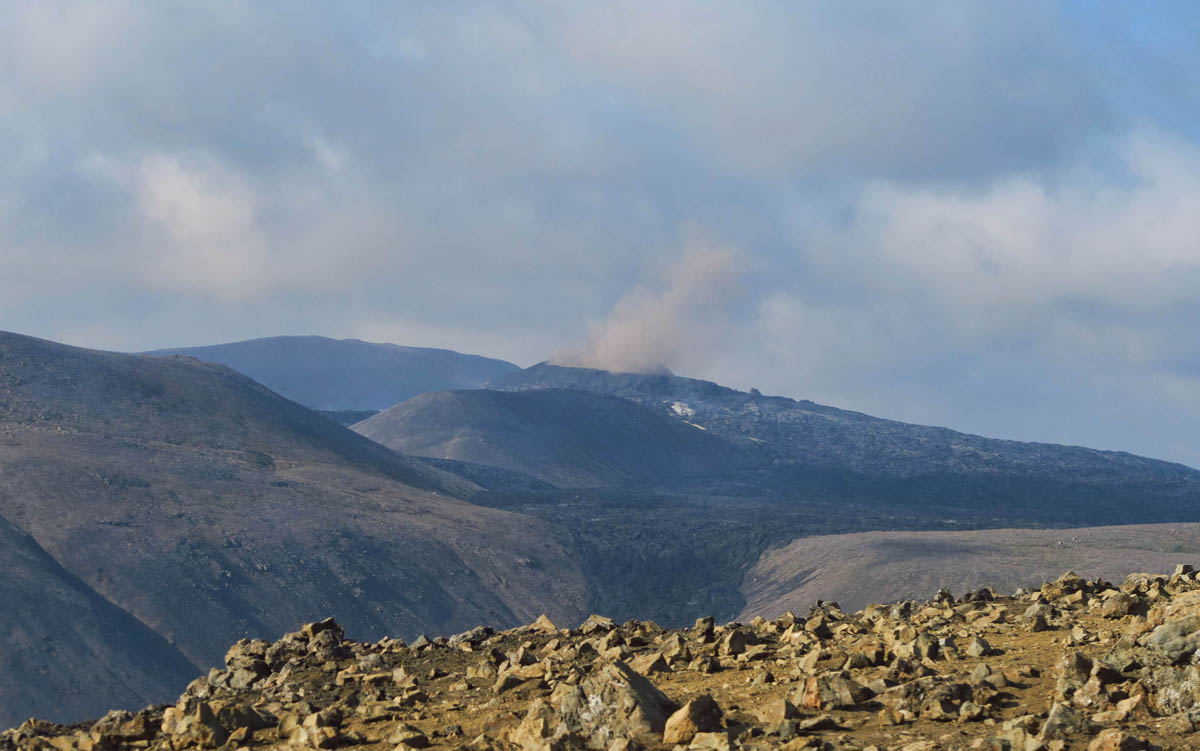 I keep stopping to look back over my shoulder on the way down. Another puff of smoke was my final farewell. 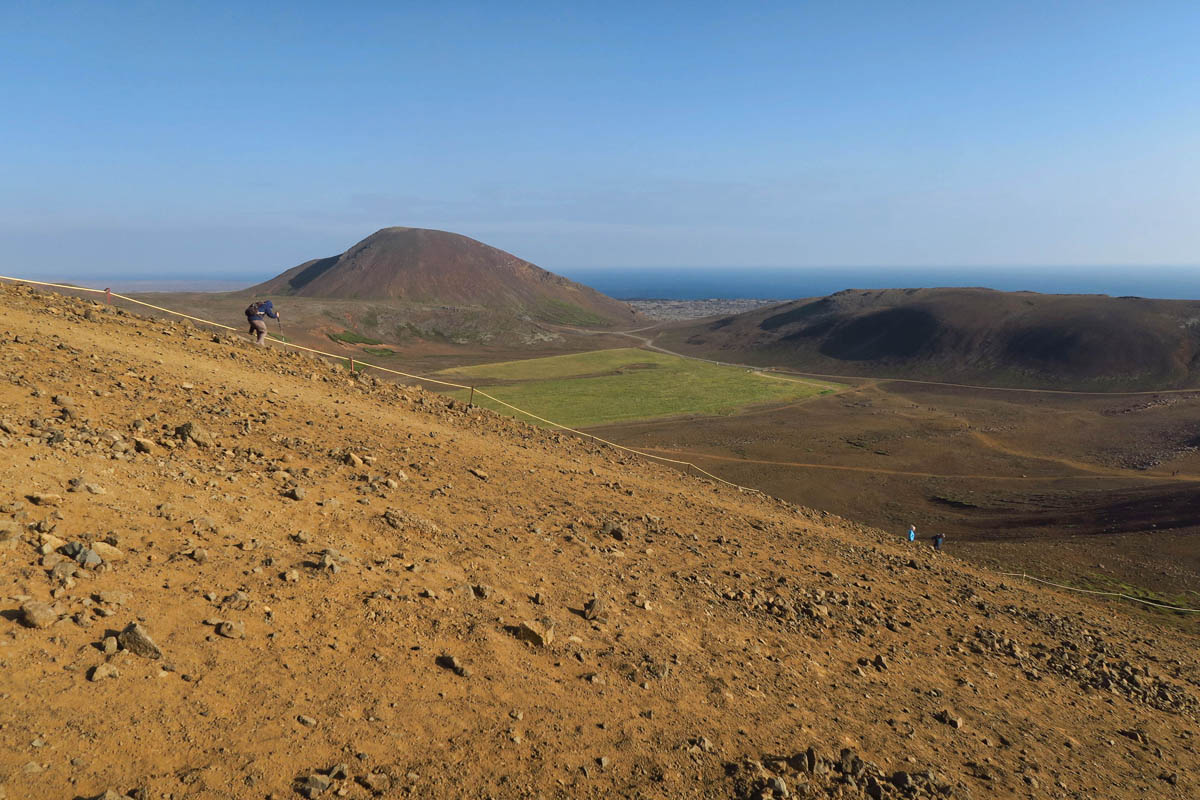 Photos never portray the hillsides to be as steep as the seem in real life. Or as windy for that matter. But check out the stance of the guy in the upper left corner, and you will get an idea… 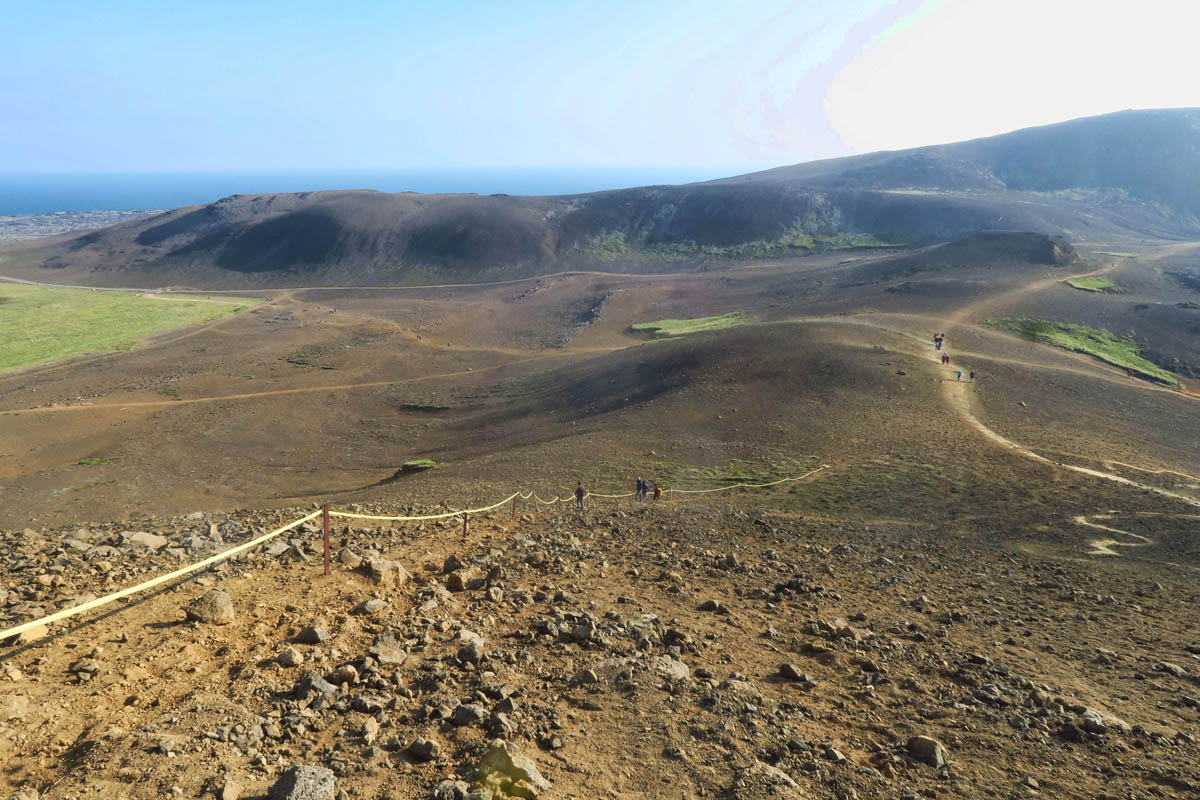 If it had started to erupt again, I would have gone back up…though I was not looking forward to this rope section! (I later learned there was an easier way up, but it was without a view.)

I budgeted time into my trip for a “second chance.” I woke up at first light to check the live webcam, and this is what I saw. It never changed for the next two days. 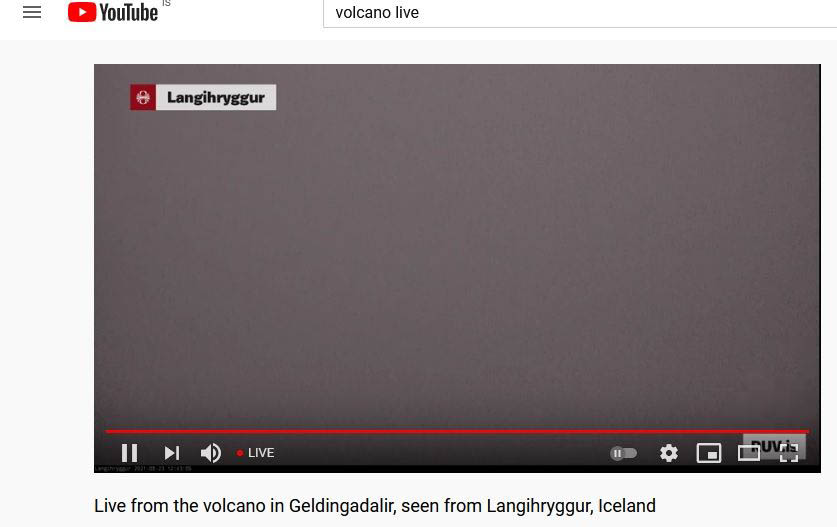 The volcano eruption site creates its own weather system to include “vog,” or volcanic smog. But in this case, it was just plain “socked in.”

As of now, the volcano is no longer erupting. But they have pronounced it to be dying many times based on seismic activity of volcanic tremors in the area. Without fail, the volcano has proven them wrong, and roared back to life with a vengeance, filling valleys with a fountain of lava spilling out on top of cooled piles of lava. So who knows how long it will last. There is really no way to predict how long the “red hot magma,” as Dr. Evil would say, will continue to bubble and ooze from the vents and fissures. The eruption has now become the second longest in Iceland of the 21st century.

Even though my window for viewing has closed, I still sneak a peak at the live webcam, admittedly with the disdain of a jilted lover. Jilted lava.

7 thoughts on “No Lovah from the Lava”