I have heard of Iceland’s famous Blue Lagoon since I first heard about Iceland as a travel destination. It’s likely Iceland’s most famous attraction. As someone who has joked before about needing a bumper sticker to say “I Brake for Hot Springs,” it’s a place that has long intrigued me, and high on my “must visit” list.

But there’s a “new kid in town,” the Sky Lagoon, just opened in May of this year. It’s getting a lot of press as being a leading attraction of its own. Neither of them are cheap, costing over fifty bucks for the experience of steamy showers followed by unlimited soaking, towels, and one complimentary drink.

So how to choose? Well, life is short, and if there is one thing COVID has taught me, it’s to “gather ye rosebuds while ye may.” So I decided to do both!

Each of the two lagoons offers multiple levels, so it’s good to compare what features are important to you. The second tier at The Blue Lagoon offers an additional drink, an additional face mask, and a bathrobe. Not features I really had to have, so I went with the basic package there. But the Sky Lagoon’s second tier offers a seven step ritual that sounded compelling, so I splurged on the added benefits.

The Icelandic bathing ritual is quite strict, and I like it. You must shower not with a swimsuit on, but rather completely naked, scrubbing with soap while focusing on all the cracks and crevasses. There are even posters with charts in the shower stalls highlighting the places that should receive target washing. I always wondered how wetting down the body while covered by a swimsuit really got one clean, so I like this mandate as at least some will be compelled to actually wash before entering the pool!

Also, to address the COVID conundrum, at all times I found it possible to maintain a comfortable distance from others. If the locker room was crowded, I just carried my stuff to a less crowded corner to do what I needed to do. But Iceland’s current restrictions also limit occupancy in all pools and hot springs to 75% capacity. And since the soaking itself was outdoors, I felt like I was able to minimize risk of exposure.

First up; The Sky Lagoon. Overflowing with hot geothermal sea water, its infinity pool looks out over the ocean facing the setting sun. It’s flanked on the other three sides by black volcanic boulders giving it more of a “lagoon” atmosphere. It’s a lovely place to be at sunset, though waiting out the sunset during my time there meant soaking until 10:30pm.

Sky Lagoon’s basic package, “Pure Lite” comes with unlimited soaking, a towel, and one drink of choice included. I splurged on the middle tier, “Pure,” which offers a seven step ritual in addition to unlimited soaking. First step is the lagoon, along with a cold plunge pool (considering everyone gets those first two steps, it should really be marketed as a “five step ritual,” if you ask me.) Then one enters the Ritual Hut for the remaining five steps; an unbelievably hot, dry sauna, followed by a cold rain-like mist. Then a salt scrub, and a steam bath, ending with a shower and more lagooning. 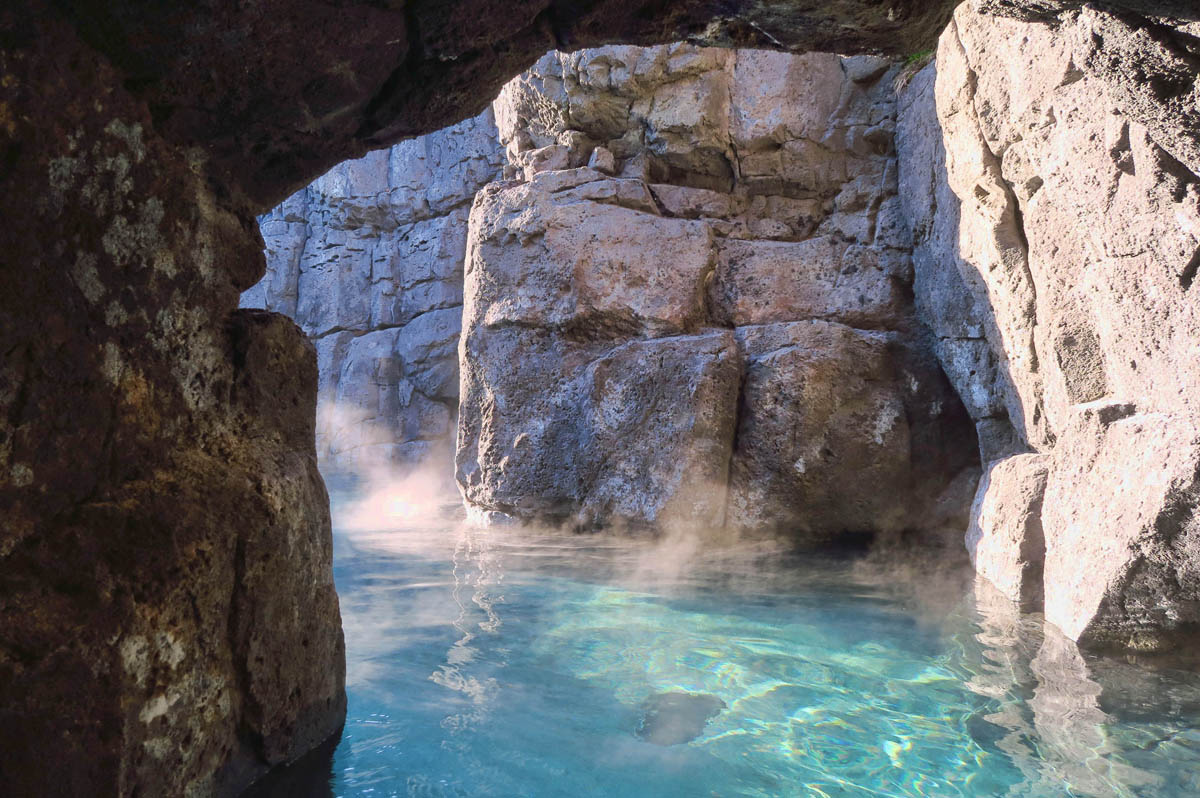 To enter the Sky Lagoon, descend down a ramp through an opening made from volcanic rock. The steam rising adds to the ambiance, as does the crystal clear water. 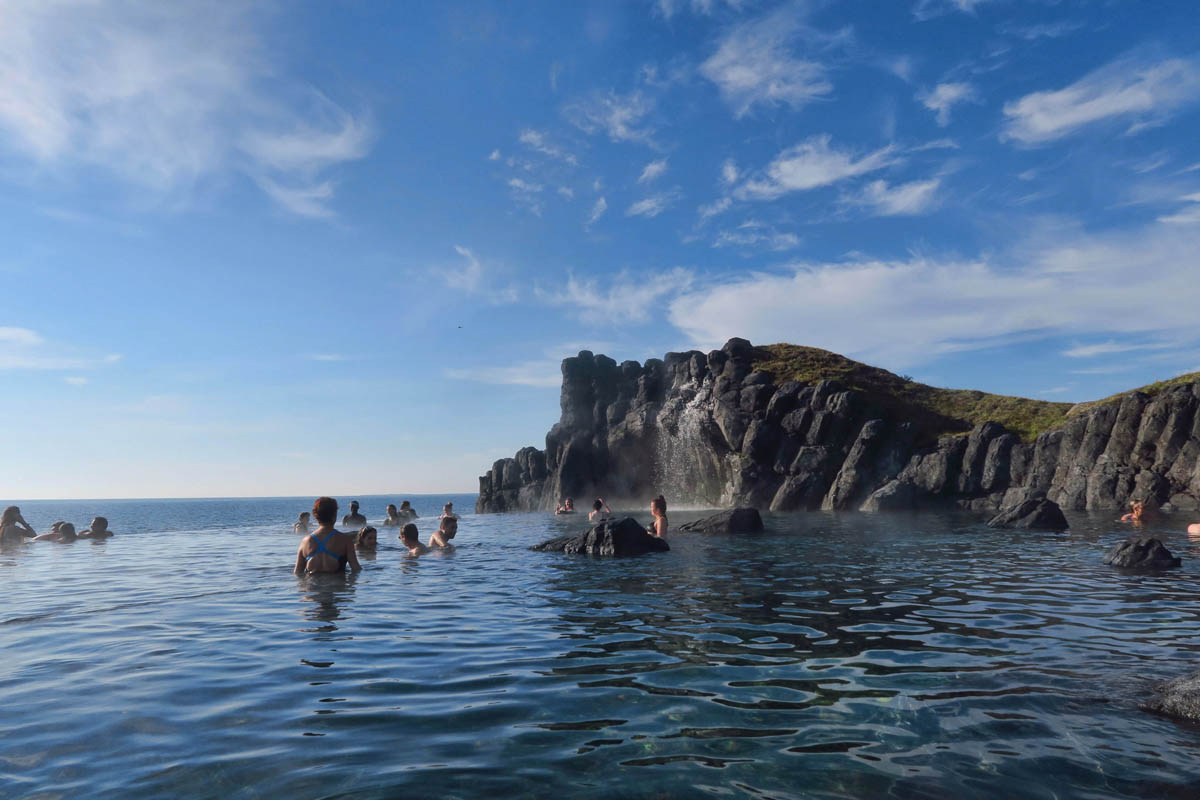 Three fourths of the lagoon is surrounded by the high boulders, while the fourth side is an “infinity edge” that looks out over the ocean. 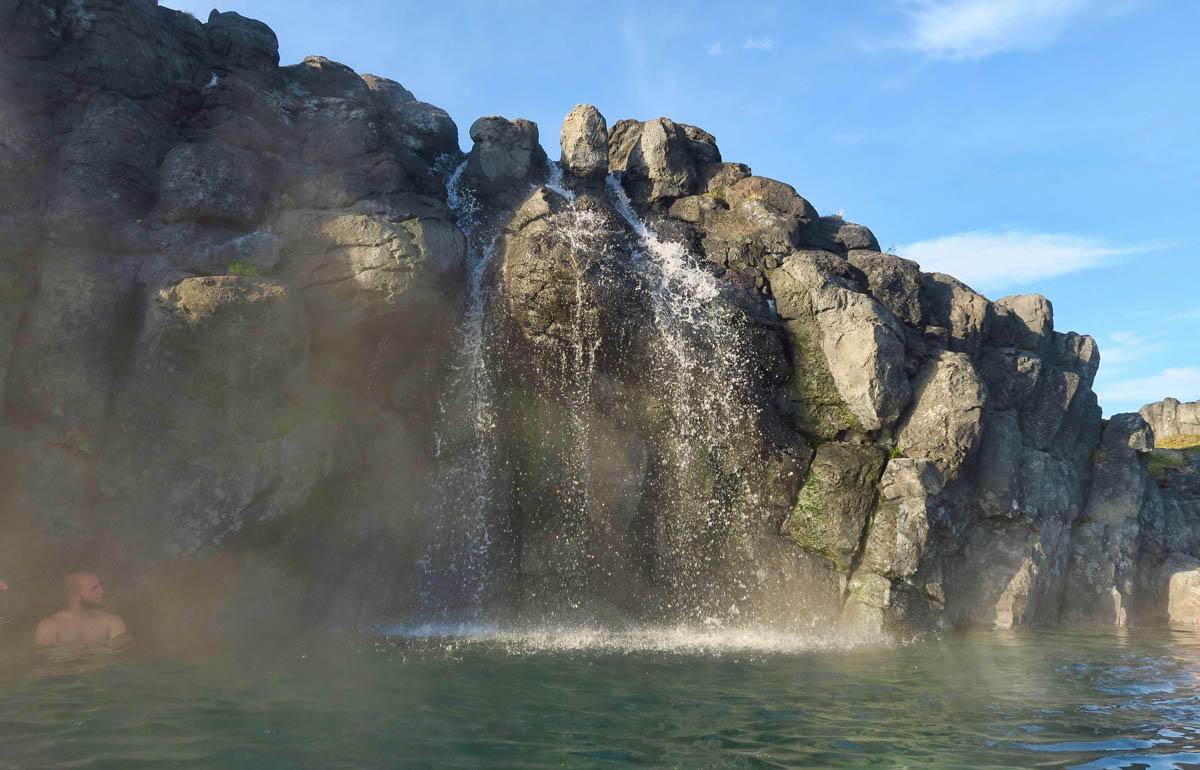 There are some man-made “waterfalls” to stand beneath to receive a relaxing shoulder massage. 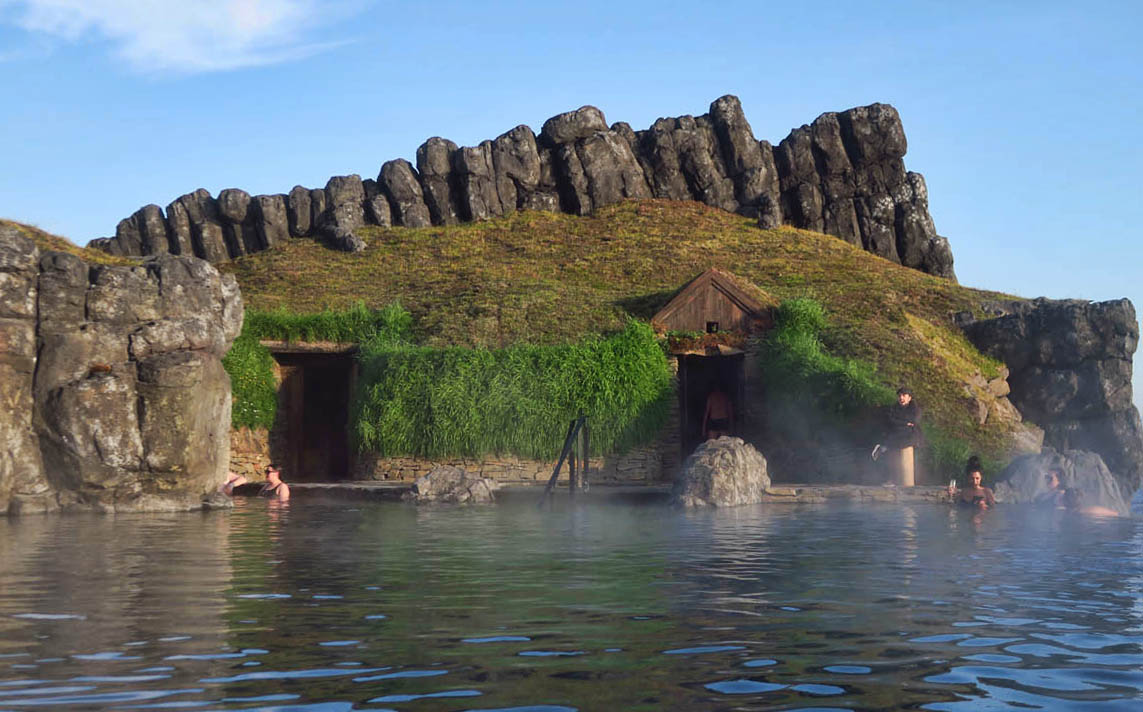 This little turf hut is where you go for the “Ritual” if you have purchased the second or third package tier. 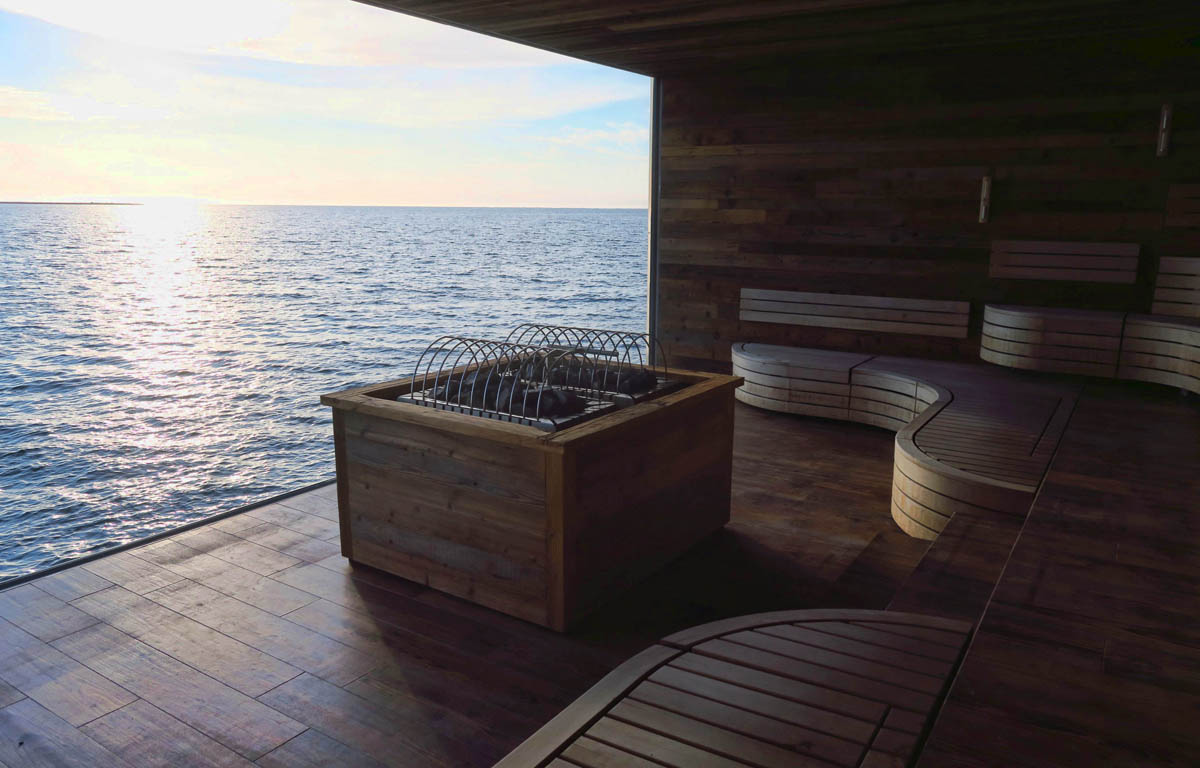 Inside the hut are several treatment areas. This is the dry sauna. I don’t know how on earth this room stays roasting hot when one of the walls is open to the ocean, but it does. HOT! 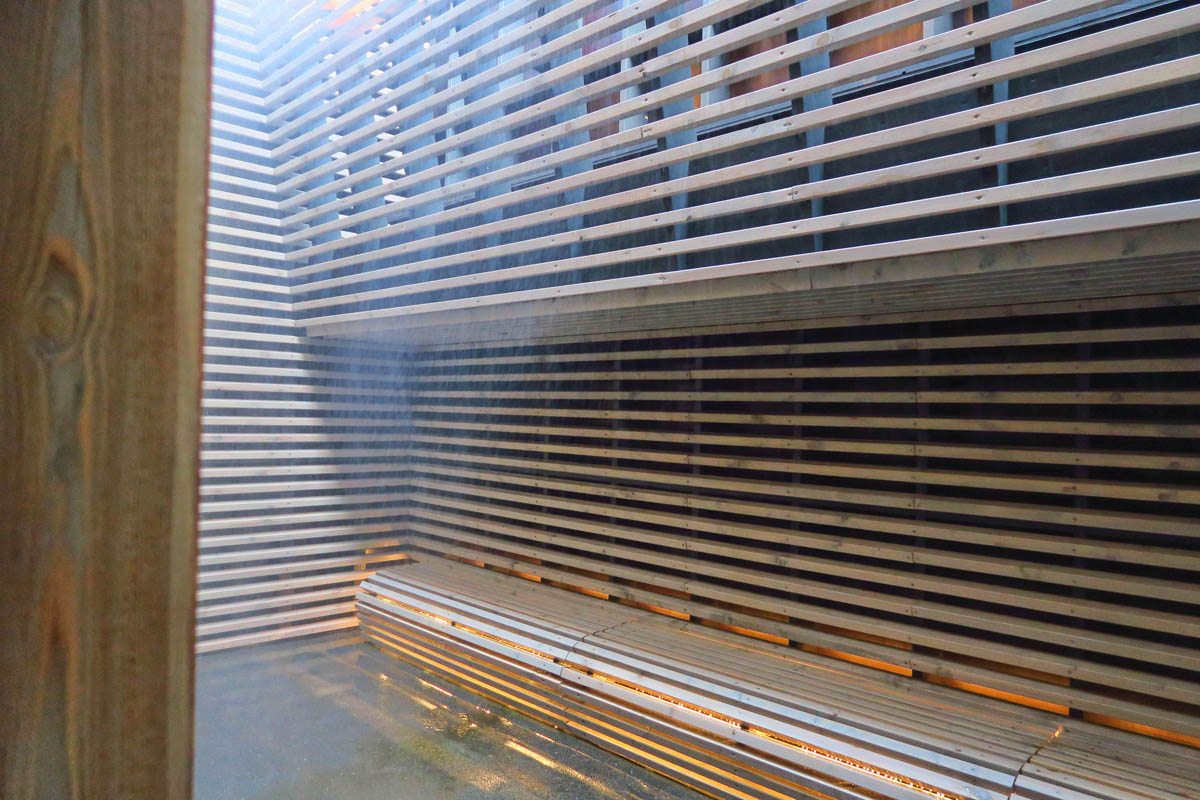 Following the hot sauna is the cold mist room. This picture doesn’t say much, but it was tough to photograph without a person for perspective. These slatted walls had to be 18 feet straight up, and out of them floated a fine, cold foggy mist. 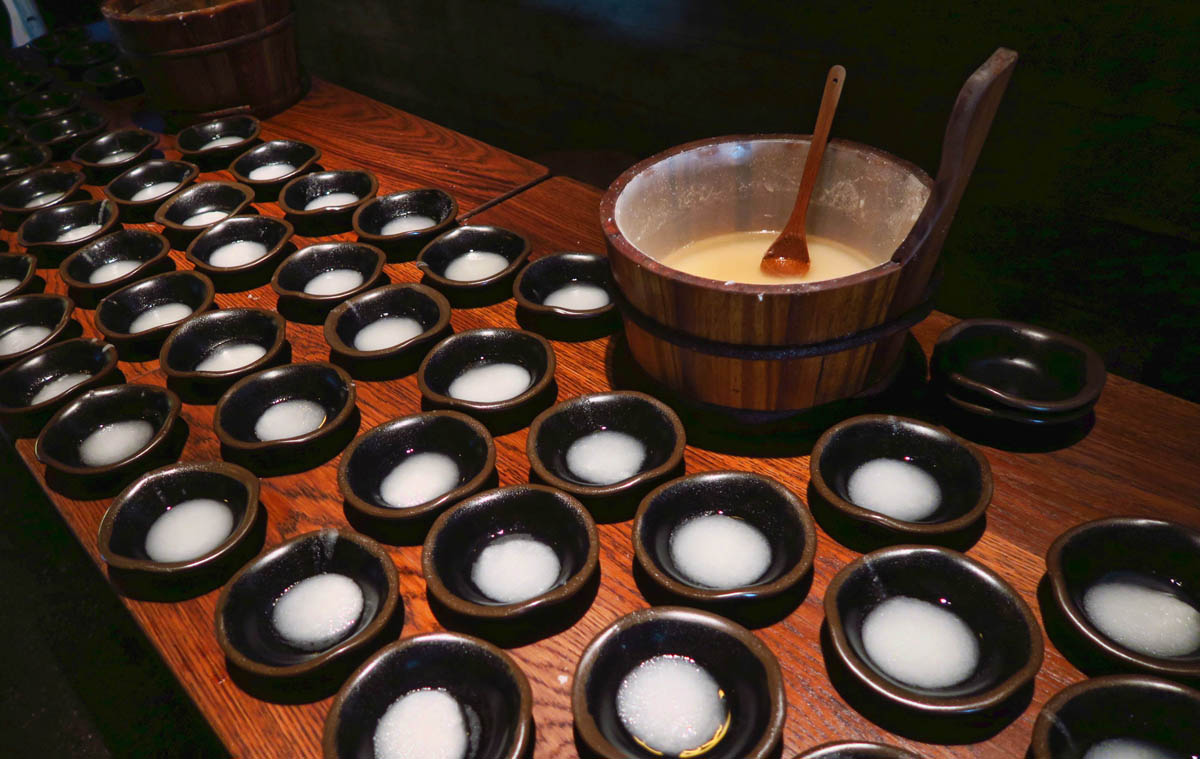 The self-administered salt scrub is next. Sea salt, almond oil, and sesame oil. “Exfoliation is good for the nation,” as we used to say when I worked for Clinique. 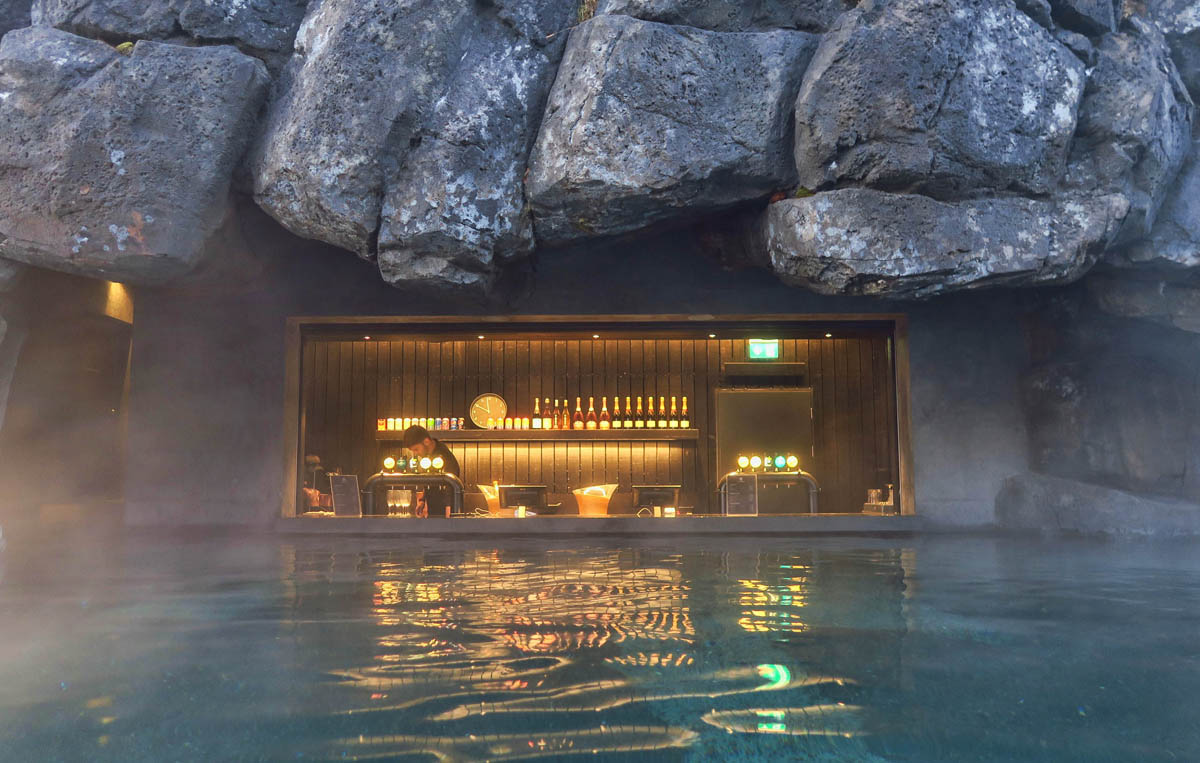 Here is the swim-up bar. Not cheap, so pace yourself, Suzanne! 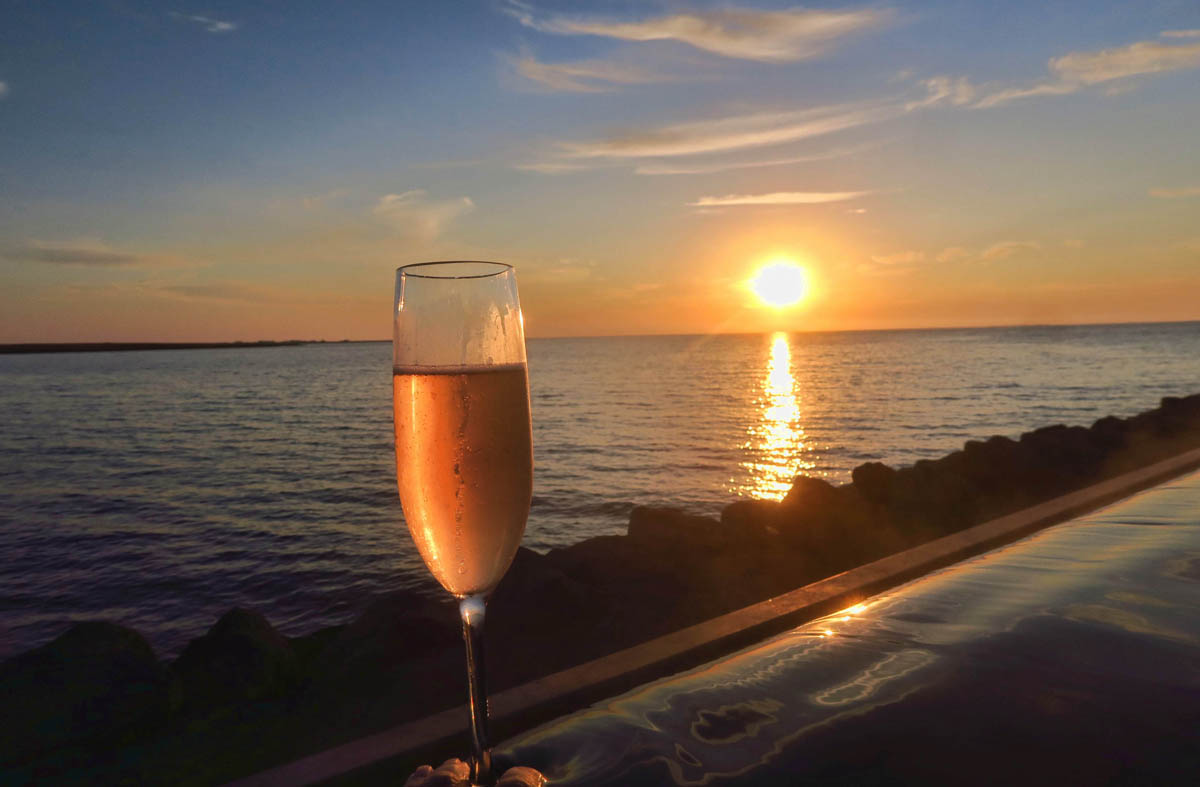 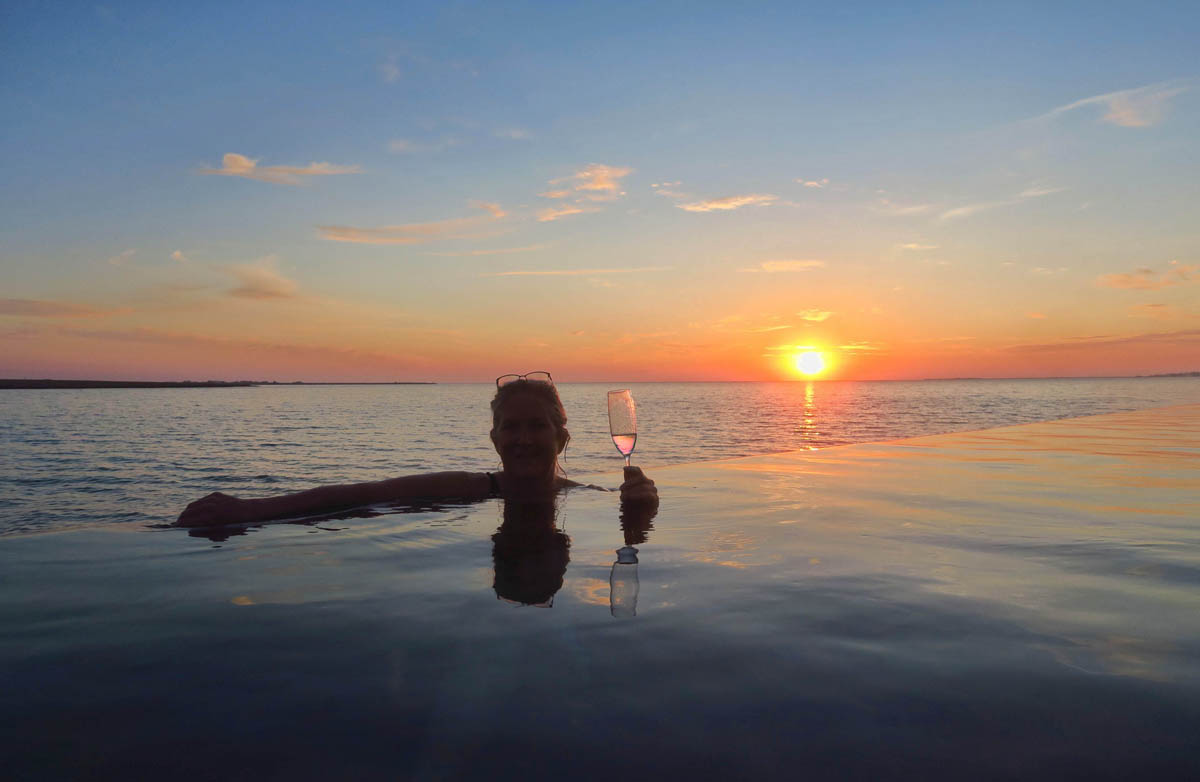 Sky Lagoon also won for “best sunset view,” though one must hang around until 10:30pm to see it! 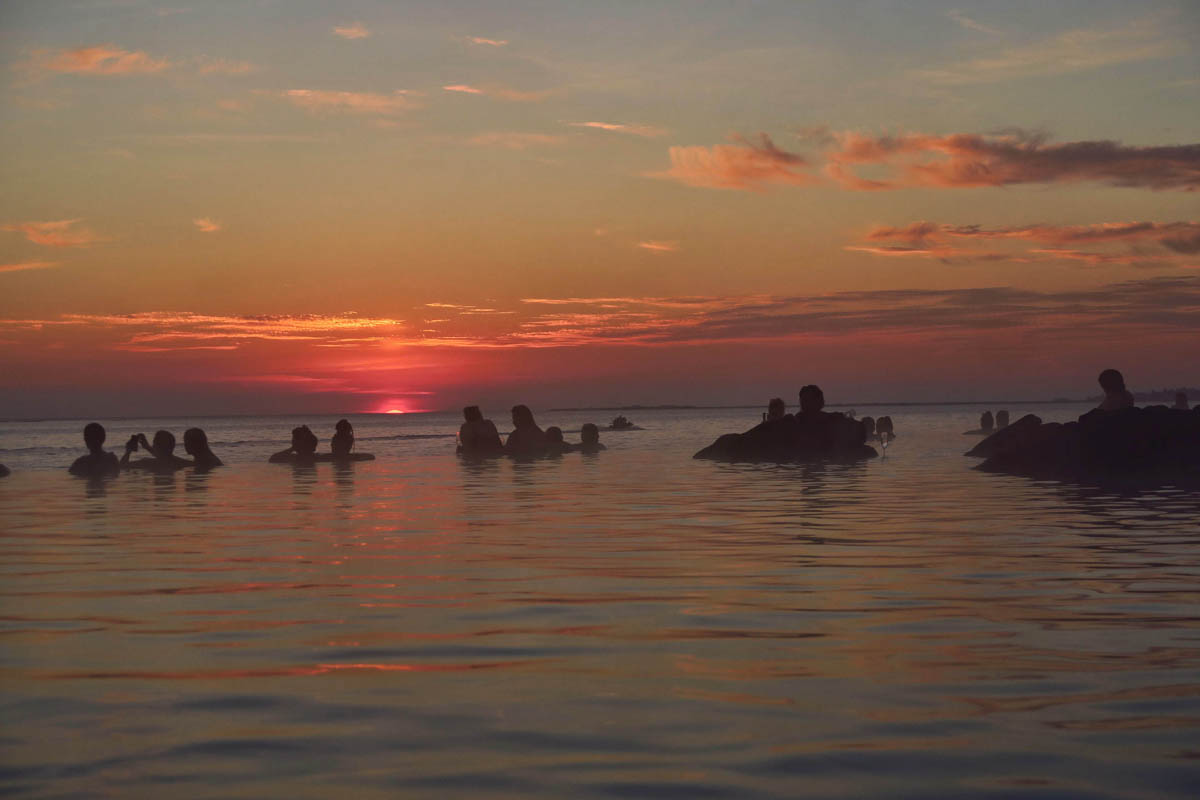 It was worth the wait.

While I enjoyed my time at the Sky Lagoon, I could have been most anywhere, really. Though that much hot water anywhere is a novelty, it was otherwise just a giant hot saltwater soaking pool. It did have a great swim-up bar selection that turned me into quite the fan of sparkling Prosecco Rosé, however.

But the mother of all hot springs lies 45 miles outside of Reykjavik, just minutes from Keflavik, the international airport. The Blue Lagoon, what I consider to be “Iconic Iceland.”

While both of these lagoons are filled by natural geothermal sea water heated beneath the earth surface, they are both man-made. Neither is a true natural hot spring that Iceland is known for, yet they are among Iceland’s most frequently visited tourist attractions. You won’t find many locals there in spite of both lagoons working to incorporate the tradition of bathing culture for which Iceland is so well known.

But the difference between the lagoons comes in the form of mineral make-up. The water in the Blue Lagoon is heavy in silica, which gives the water it’s pale blue milky color due to light refraction.

The Blue Lagoon came about as a result of a byproduct from the Svartsengi Geothermal Resource Park. Back in the 80’s, locals began swimming in a lava lagoon filled with this byproduct of the geothermal extraction, as it was discovered to soothe and heal psoriasis.

As further explanation, I plagiarized this from the “Guide to Iceland” website:

“For heating, boiling hot water is taken directly from the ground and pumped into the radiators of Iceland’s houses. The Svartsengi plant drills for hot water for this purpose and the water that it receives is around 200°C (392°F).

However, this water is full of dissolved minerals mixed in with seawater and is therefore not suitable for direct use to warm up houses (the minerals would damage the pipes). Instead, the water heats freshwater that is then pumped to nearby urban areas.

After this, the water is simply released into the nearby lava field. Lava is porous, so water usually sinks into it and seemingly disappears. This water, however, is rich with silica that separates as it cools down. The silica quickly formed a mud layer in the lava that stopped the water seeping through, creating the lagoon.”

Another thing the two lagoons have in common is the use of technology throughout the lagoon exerience. Guests are issued a wrist band upon check-in. It’s used to open and lock one’s personal locker, purchase additional drinks, masks, etc. Not only does it keep track of the first included drink and any subsequent purchases, it cuts you off at three drinks. LOL! At the end of the stay, one deposits the wristband into a kiosk that tells whether or not additional monies are owed, then opens the exit gate accordingly.

I booked the first appointment of the day at The Blue Lagoon so as to avoid a crowd as much as possible. Having done my research, I knew the drill to shower before putting on my suit, remove all jewelry, and coat my hair in conditioner as a protectant from the minerals in the water. So I was the second person in the pool this day….a cold, gray, foggy day when I finally plunged myself into the iconic pale milky blue pool, enveloping myself up to the neck in a warm bath, with only my head protruding into the foggy mist rolling through. I wish I had words to describe coming out of that shower, wet and cold, and taking that first step into that warm, enveloping bath of perfectly heated water. It was every bit as blissful as I anticipated.

Blue Lagoon’s basic package includes unlimited soaking, use of towels, a silica facial mask, and one drink of choice. Like the Sky Lagoon, they also include a higher priced middle tier, but it was just more of what you get with the basic package (another mask and another drink and a restaurant reservation, on which I didn’t plan to splurge) so I just went with the first tier.

Though more people arrived throughout the morning, it never really felt crowded. Between the many little coves and hidden areas and the misty fog, it was easy to stay distanced from the crowds both physically and visually. 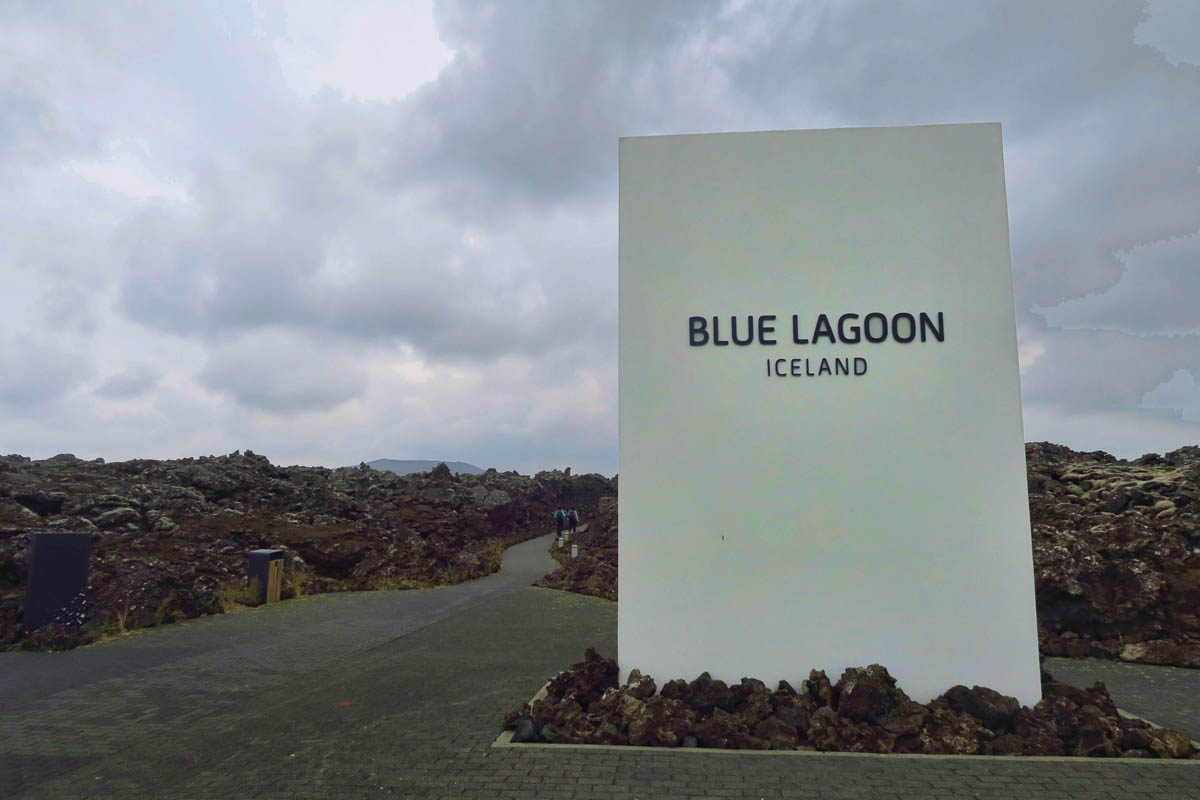 There is quite a long path leading into the lagoon that passes through the lava field. Along the way are pools of the pale blue silty water. 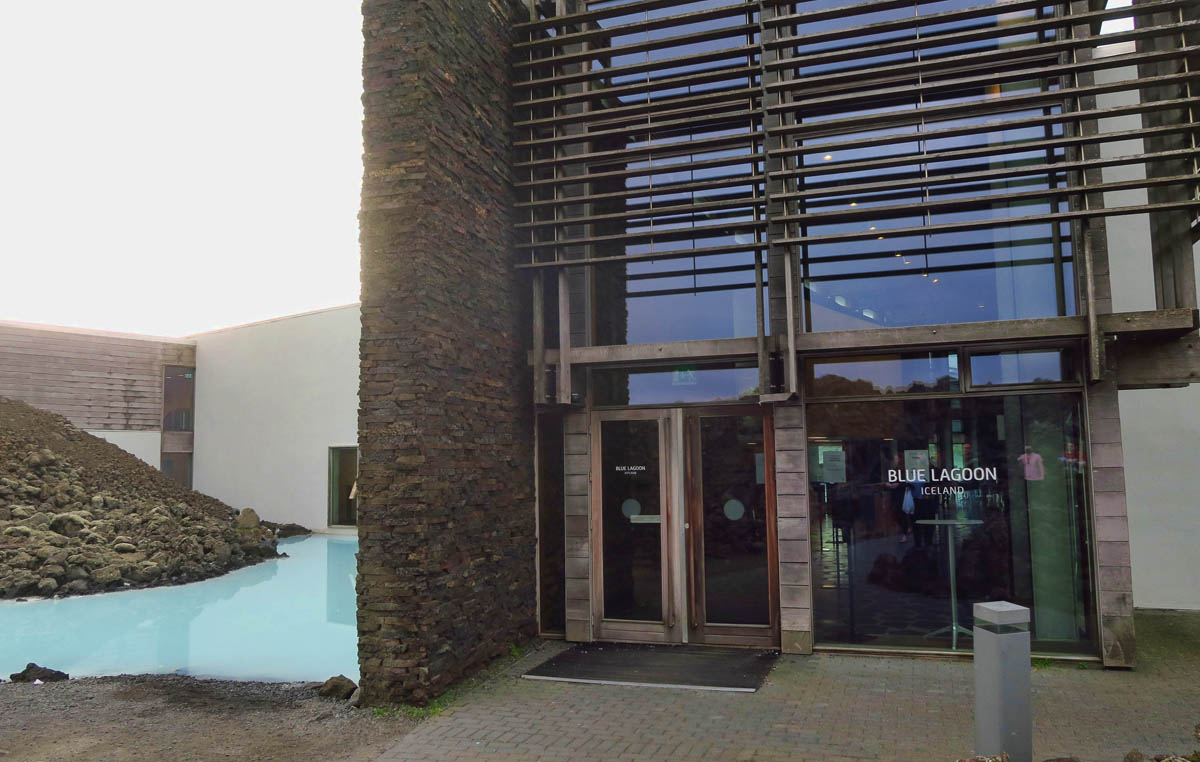 It’s quite a large complex, with a spa, hotel, and two restaurants. 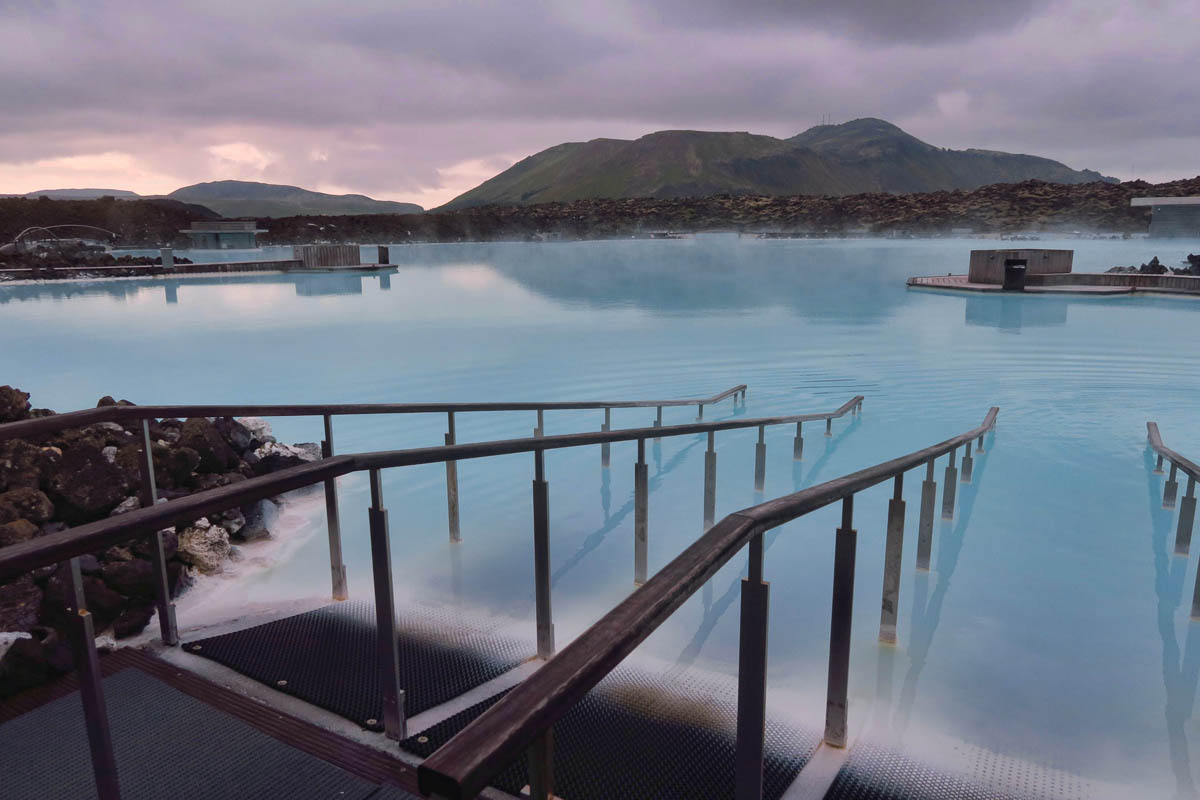 That first step into that warm bath is everything…. 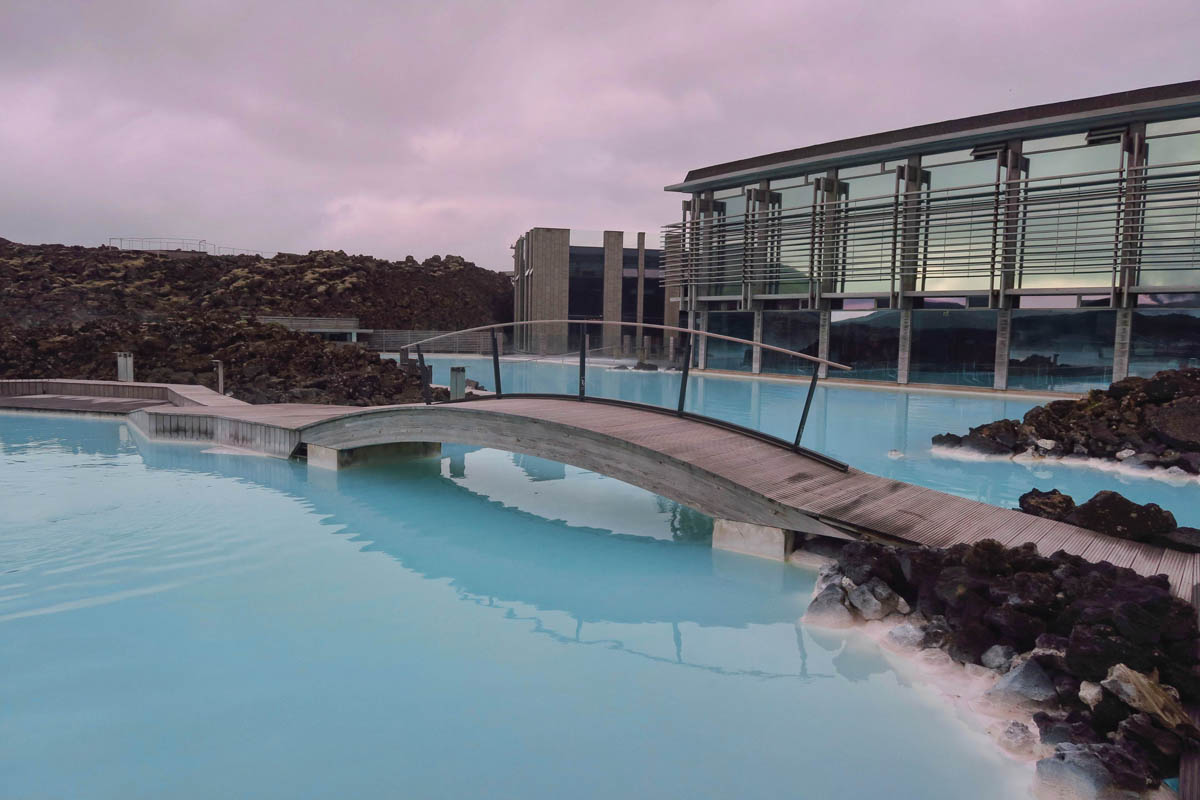 But I must wait. Got to get photos first, so I can put the camera away and relax! 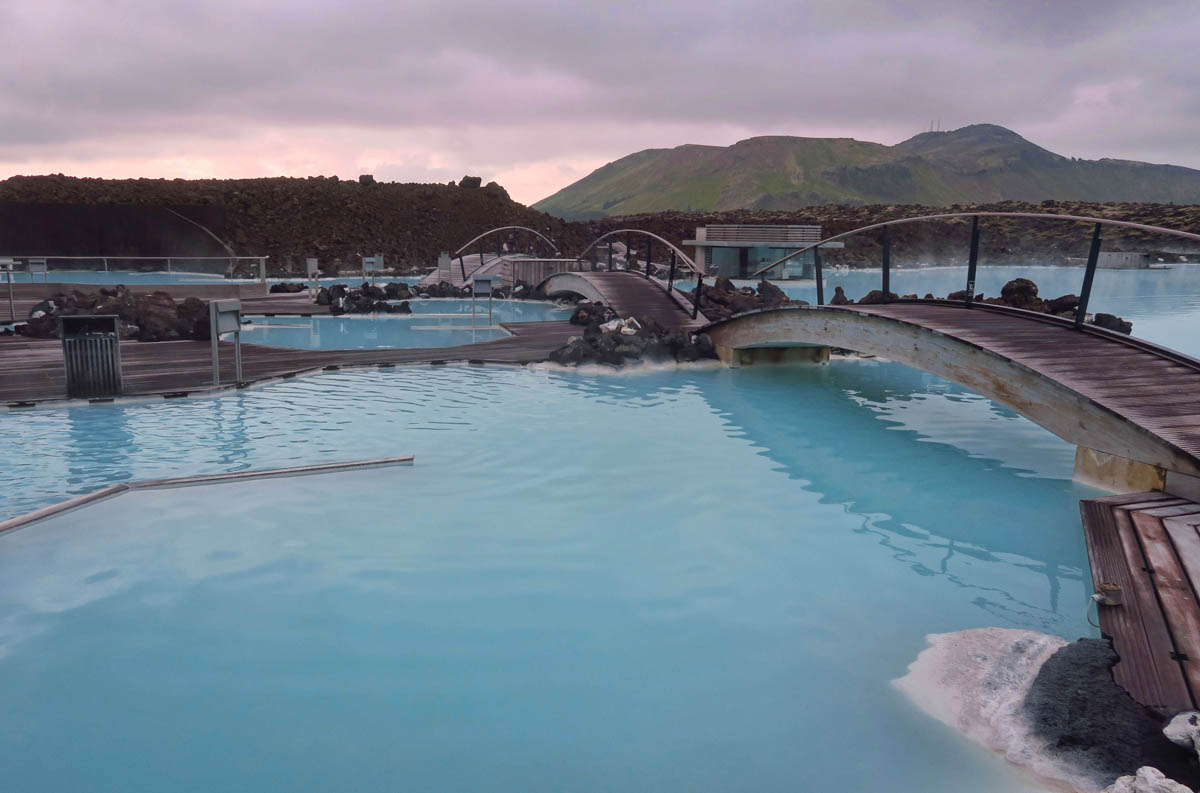 The Blue Lagoon is much larger than I had anticipated. Even later when it got crowded, it never really felt “crowded.” 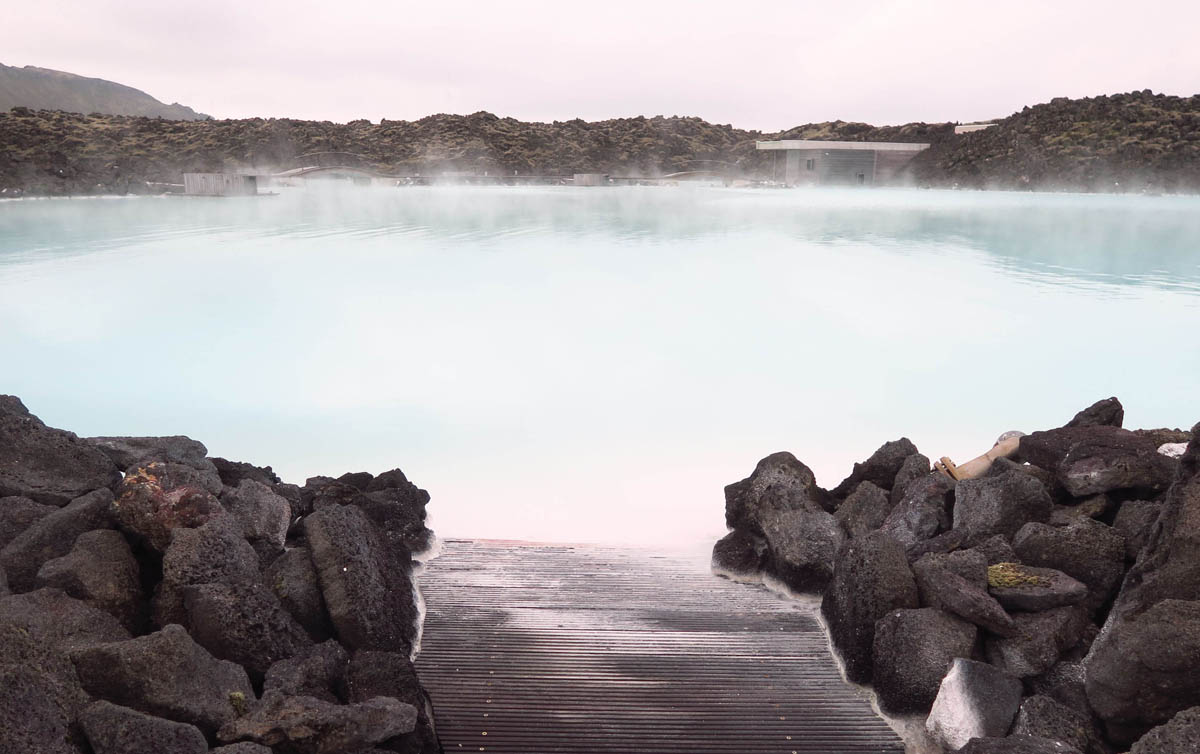 Lots of areas of egress to come and go until you find your own personal sweet spot. 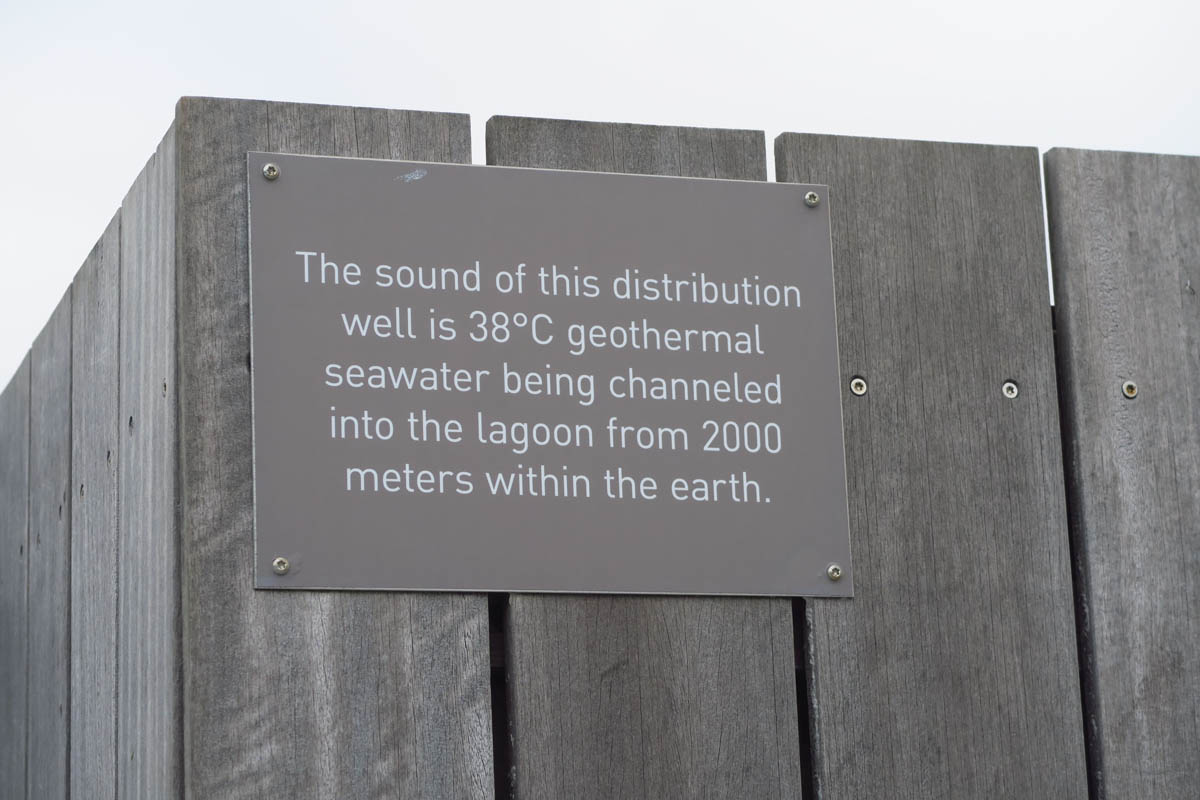 Water near the edges is cooler, but if you want to warm up, head toward one of the structures inside the lagoon with this sign. You will get a rush of warmth! 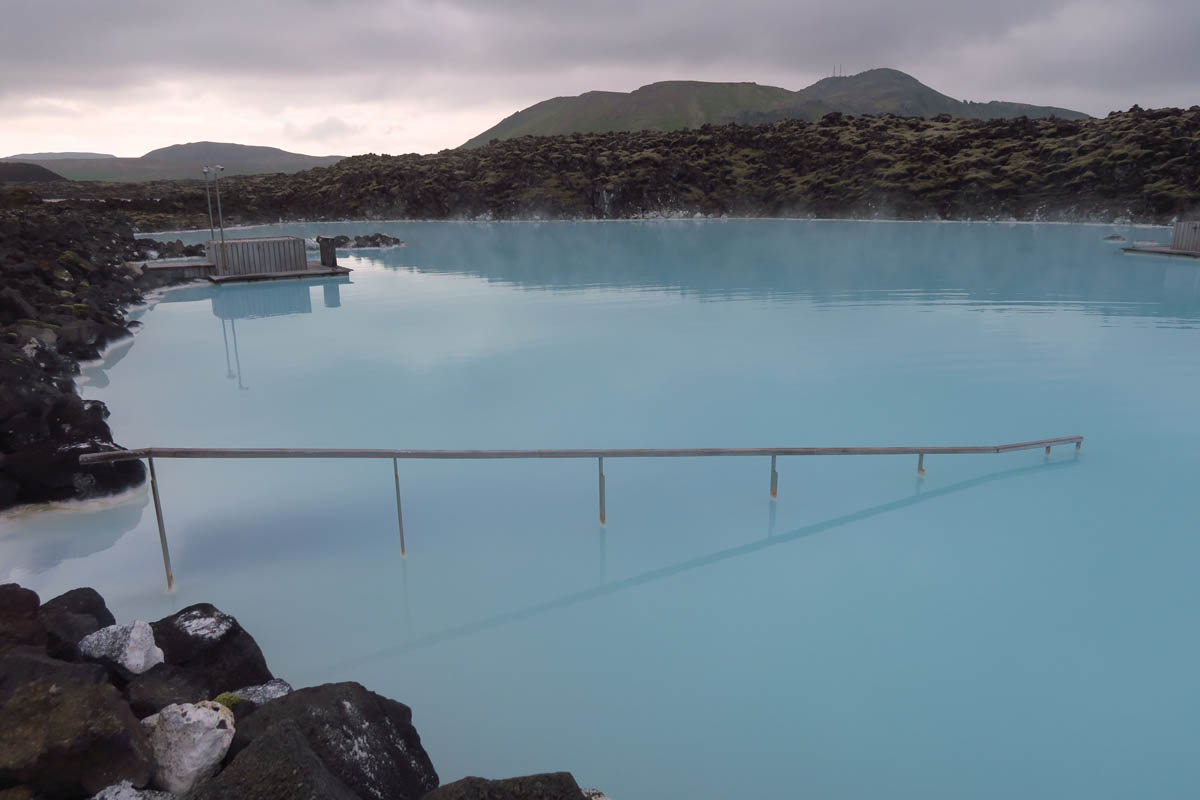 The lagoon is aboutl 4.5 ft deep, and in parts, the bottom is silty. 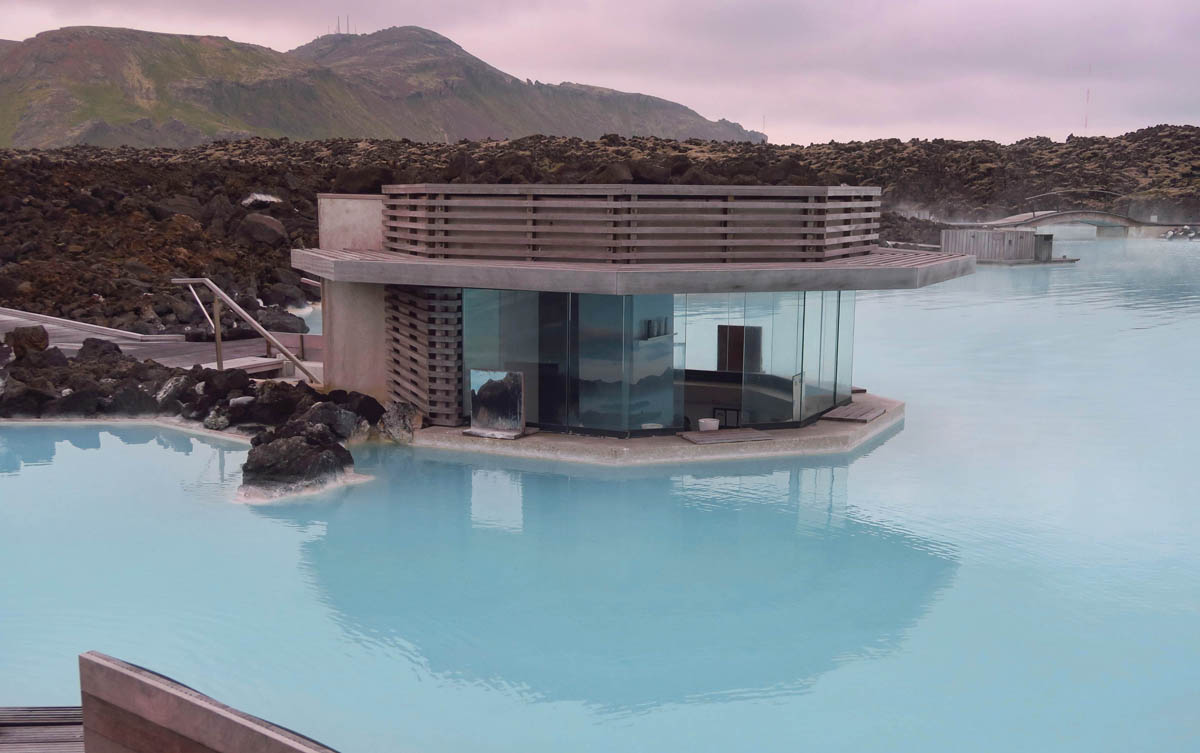 This is the “mud bar.” All tickets into the Blue Lagoon have one silica mask included. If you wish to try more (algae and volcanic mud) they are about $9 each. 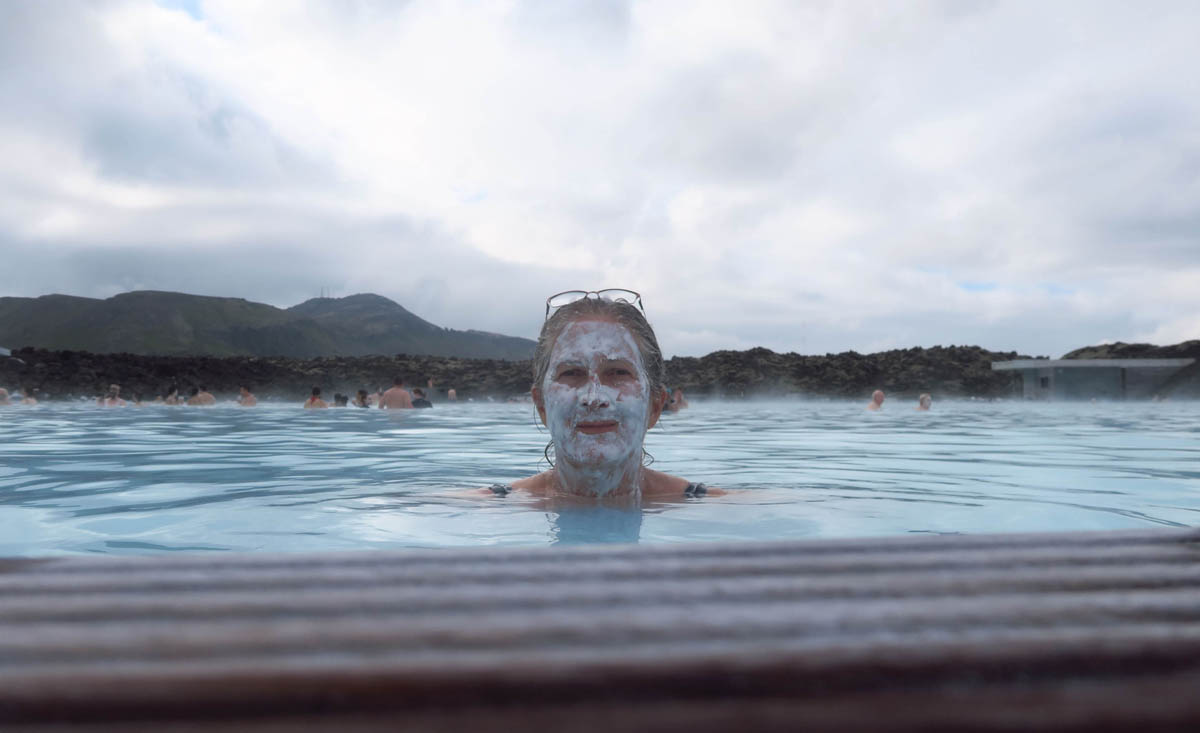 Please just don’t tell me to “smile for the camera!” 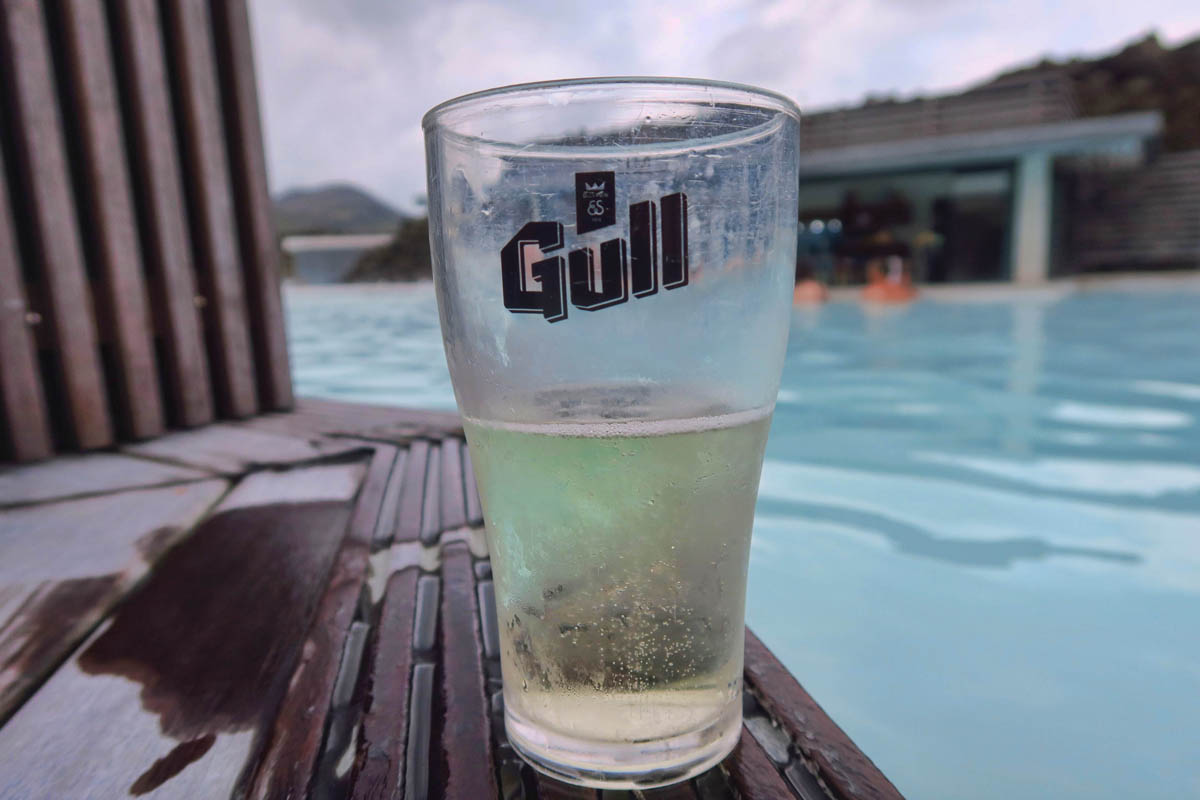 Blue Lagoon has a swim-up bar also, but not quite as classy as the Sky Lagoon. Serving sparkling wine in a Gull beer glass? Come on now! 😉 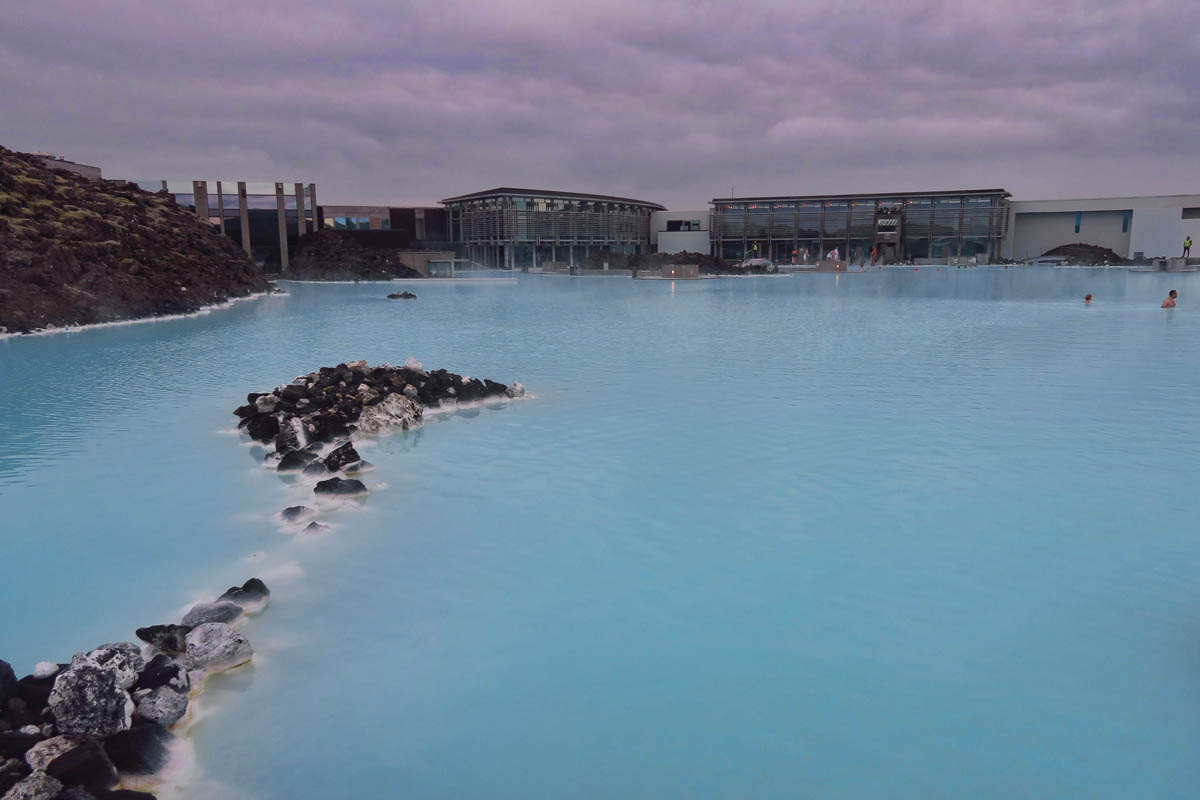 I liked being here on a gray, chilly day. While the color of the water would be more brilliant in the sunshine, the moody gray sky added to the ambiance.

I spent about four hours in each of the two lagoons. While I enjoyed them both immensely, my verdict is The Blue Lagoon is in a class by itself. It’s just huge. It’s visually stunning being surrounded by nature-made lava fields rather than those sculpted by man. The mineral-rich pale blue water is beautifully soothing. And even though there may be crowds, it still feels possible to soak in solace and solitude.

For a hot springs junkie like me, there’s just nothing better.

10 thoughts on “A Tale of Two Lagoons”