Whenever I have thought about travel to Iceland in the past, I couldn’t imagine a better way of exploring than to do so in a camper van. My desire is to complete the Ring Road, a 1,332 kilometer, 828 mile circumnavigation of the island. Doing this trip in a camper van will allow me to “gunk hole” it, similar to how I did in the Winnie back in 2017 around Newfoundland. Drive until I get tired, then stop for the night, picking back up where I left off the following morning. Anything else would necessitate backtracking to get from lodging to attractions and back, eating up precious time and fuel on the return.

I started trying to rent a camper van back in late May. Even as far back as then, the “middle tier” of mid-sized automatic vans were all taken, leaving nothing but a choice between the most expensive 4WD models, and the tiniest of manual transmission minivans. While my first car, a 1973 Datsun was a stick shift, it’s been a while. I was willing to pay a little more for automatic transmission and a little more room to maneuver. But my budget wouldn’t stretch so far as the big 4WD options. But no matter how many rental companies I contacted, no matter how many times I kept checking back for cancellations, asking to waitlist, etc. the best I could do was their smallest mini-van with a five-speed stick. 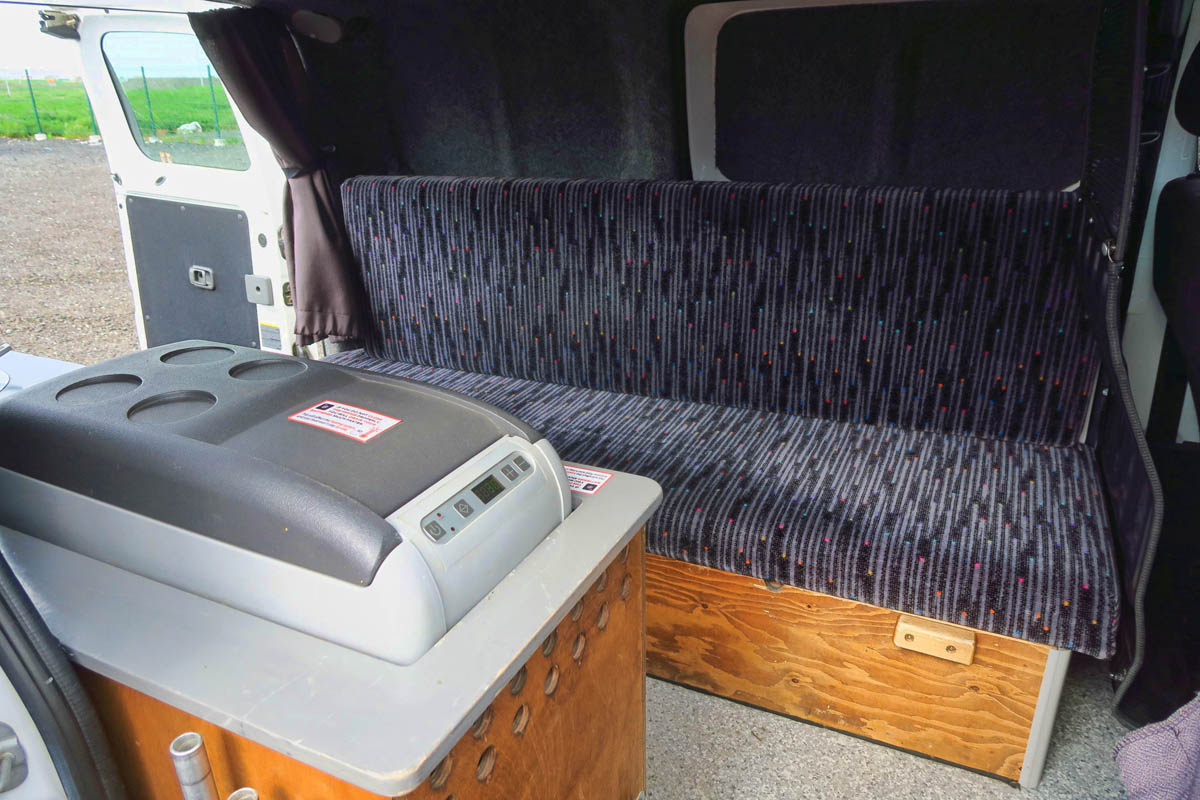 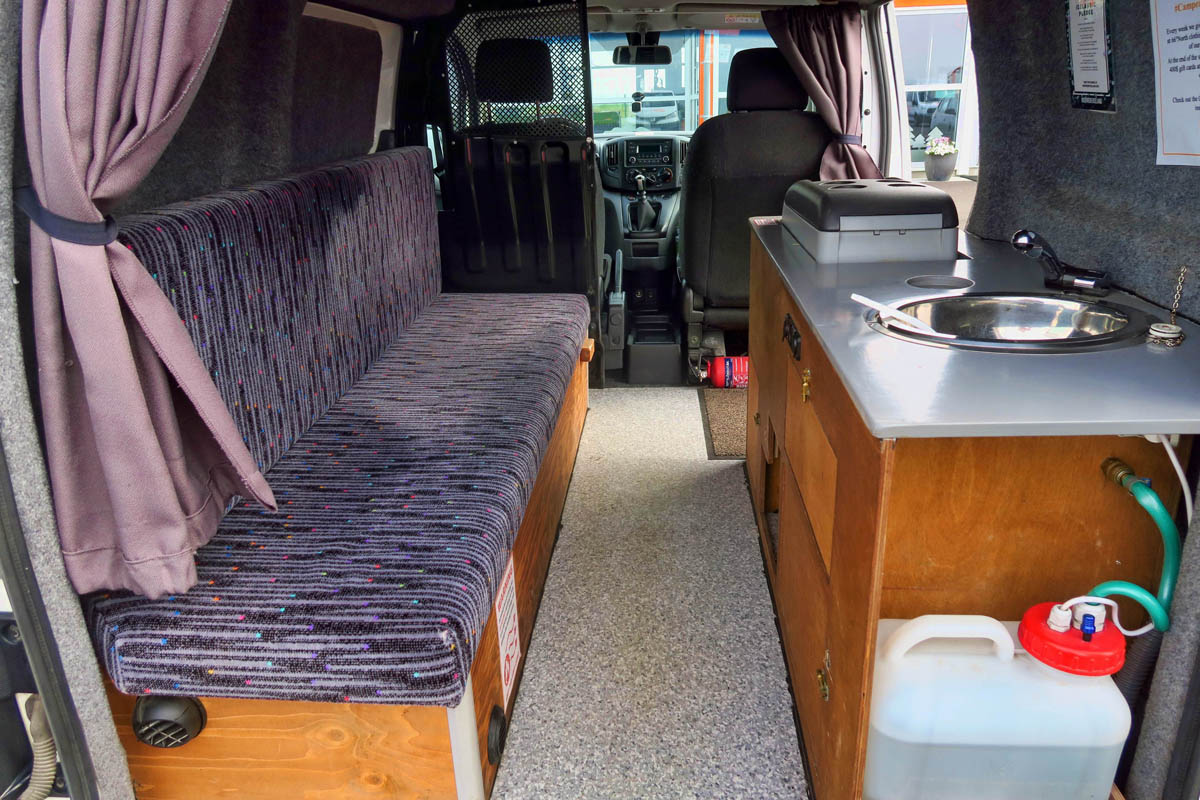 View from the back doors. One would think this would be easy, just slide out the seat and it makes into a bed. But it doesn’t work like a jack-knife sofa. First, one must retrieve three metal poles to lay across the aisle, then lift the seat back cushion up off two hooks (while bent over like a pretzel) and lay the cushion across the poles. Easy when the van is empty. Not so easy when it is filled with 2 duvets, 3 pillows, one suitcase, two carry-ons, and a 5’8″ passenger. This vehicle is made for two, but I honestly can’t imagine how that would be possible unless one of the two was sleeping outside in a tent! 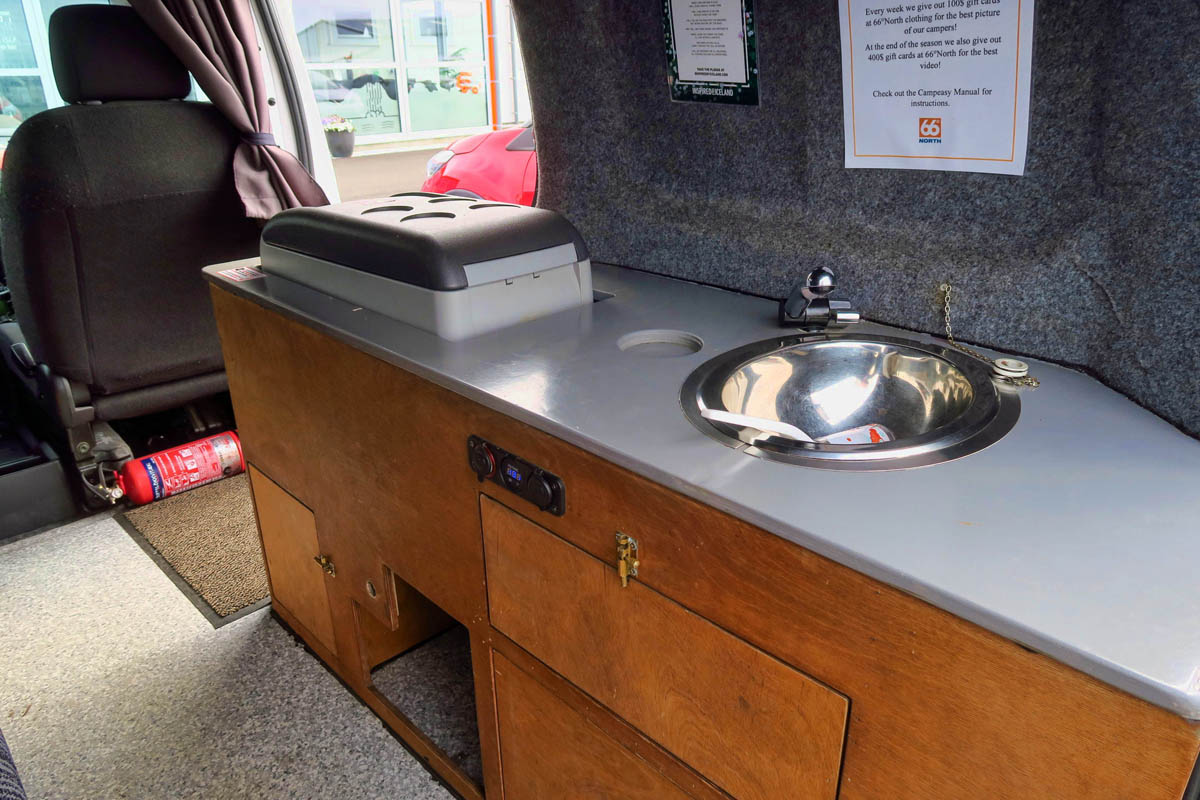 The box on the left is the fridge. It was perfectly adequate for my needs. Beneath the sink, drawers contain plates, bowls, coffee cups, and cutlery for 3 people. The bottom drawer holds skillet, large “pasta pot,” a kettle, and the gas stove. The problem is that one must make up the bed to access the drawers. 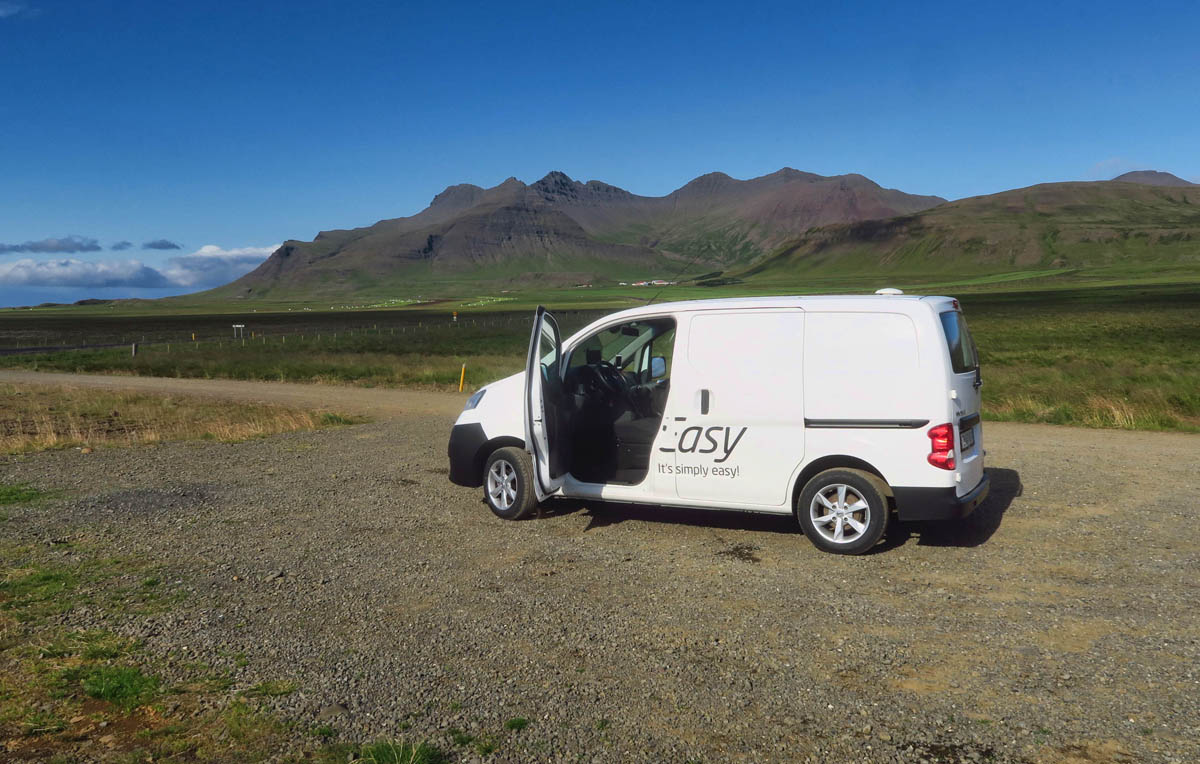 I would have been mad at myself for being so cheap to get the smallest model, but fact is, the “Easy Small” was all that was available. It would have been nice to have side windows, though I suspect I might feel differently given it’s the land of the Midnight Sun. 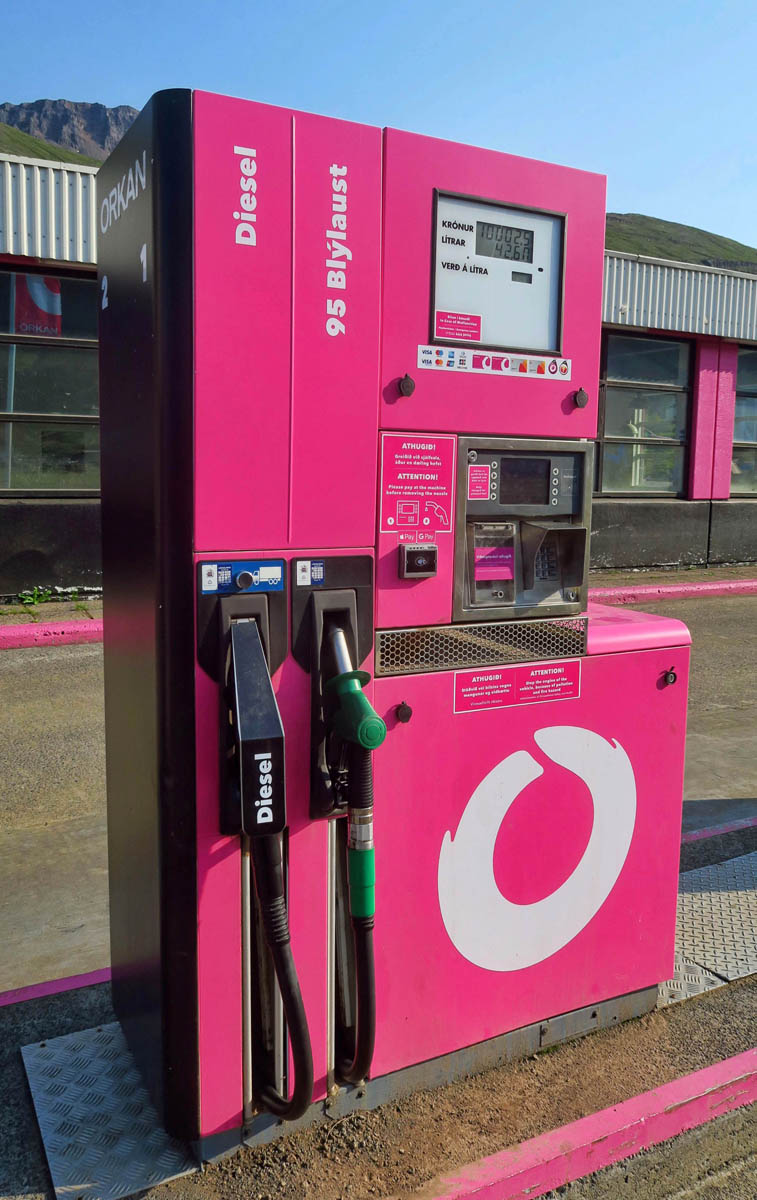 Most of the camper vans as well as autos are diesel. But beware! The colors of the pump handles are reversed! Green handles mean gas in Iceland, while black is diesel. Even though there is a metal flap over the pump that spells out, “Diesel” on the flap, I watched two different youtubers make the mistake and have to call for a pump-out.

To address the concern on every prospective travelers list about Iceland, “But it’s so expensive,” well, yes. It is expensive. But there are ways to keep the cost down. First of all, don’t leave the Keflavik airport without a stop by the duty free shop on your way out. Beer, wine, and spirits are half the price here than they are once you leave the airport. Beer purchased in the local grocery stores is not only expensive, but it’s “near beer,” just 2.25% alcohol. It’s just like Utah. If you want the “real stuff,” you must patronize the state-owned liquor store, Vínbúðin, where prices are almost twice that you can get in the Duty Free shop. So while I had both hands full with my luggage, I still didn’t leave without a 12-pack of Bóndi Session Ale.

Another way to keep the costs down it to make your first stop the Bonus Discount Store. Here, prices aren’t really that much more than they are back home. Some things like dry goods such as pasta, rice, and dairy are about the same. Produce is understandably higher, and higher still are meat items. But it’s possible to make a few meals from the camper van to keep costs down. Like I said in my previous post, “eating like a college student.” 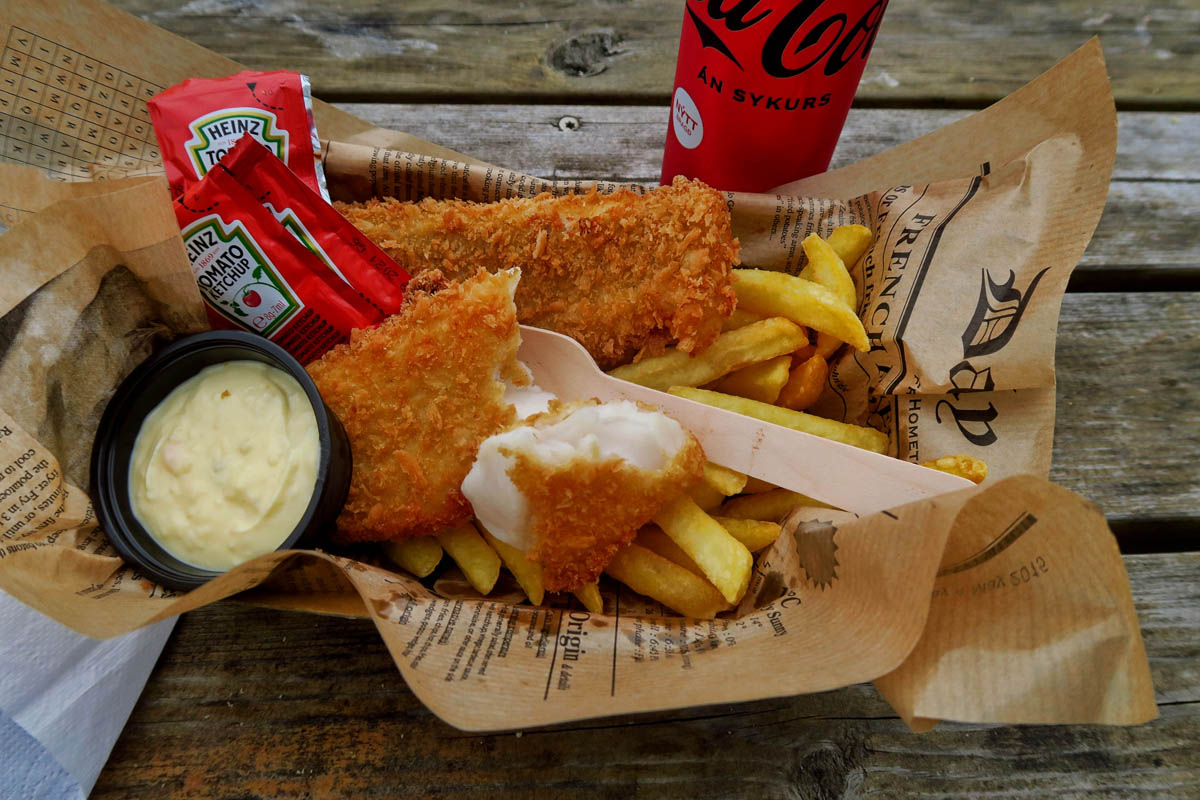 “Never go to buy groceries on an empty stomach,” they say! In the parking lot of the grocery store nearest the CampEasy lot is “Issi Fish & Chips” food truck. Best fish & chips I had in Iceland! 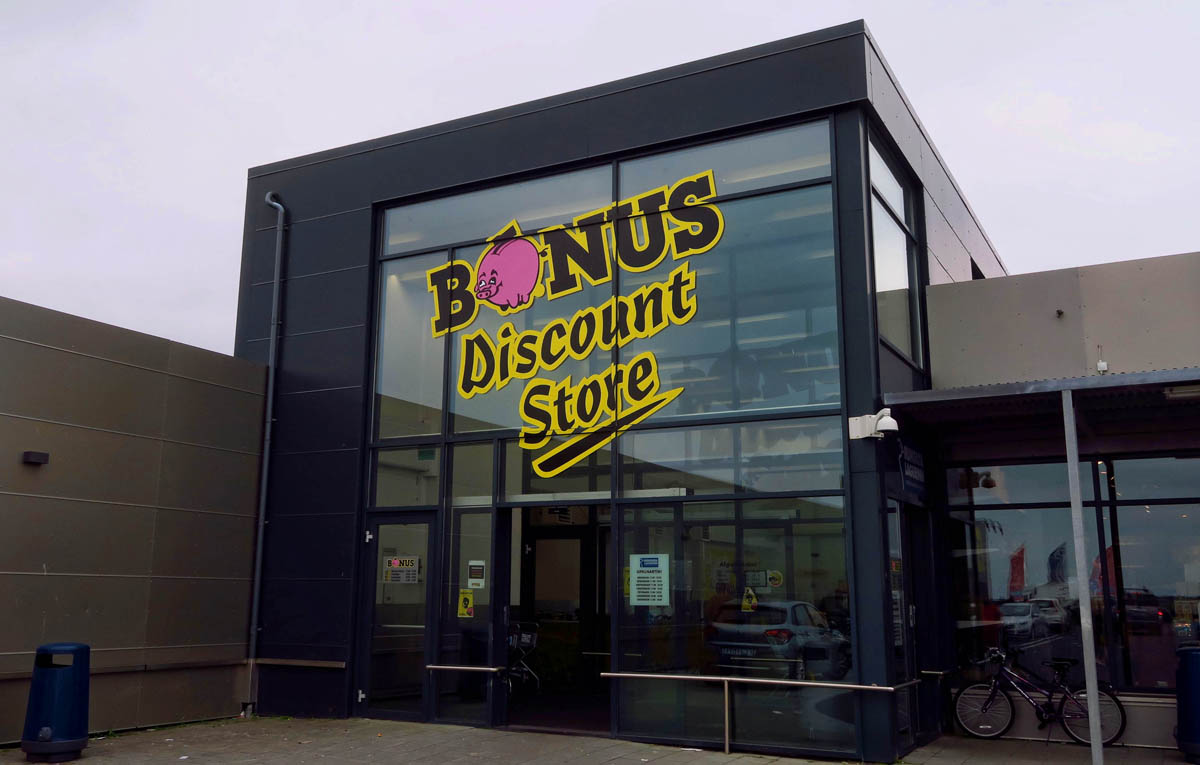 Into the Bonus Discount Store I go! Buying groceries here was a bit stressful, as I didn’t really know what to cook, and couldn’t really tell what i was buying. 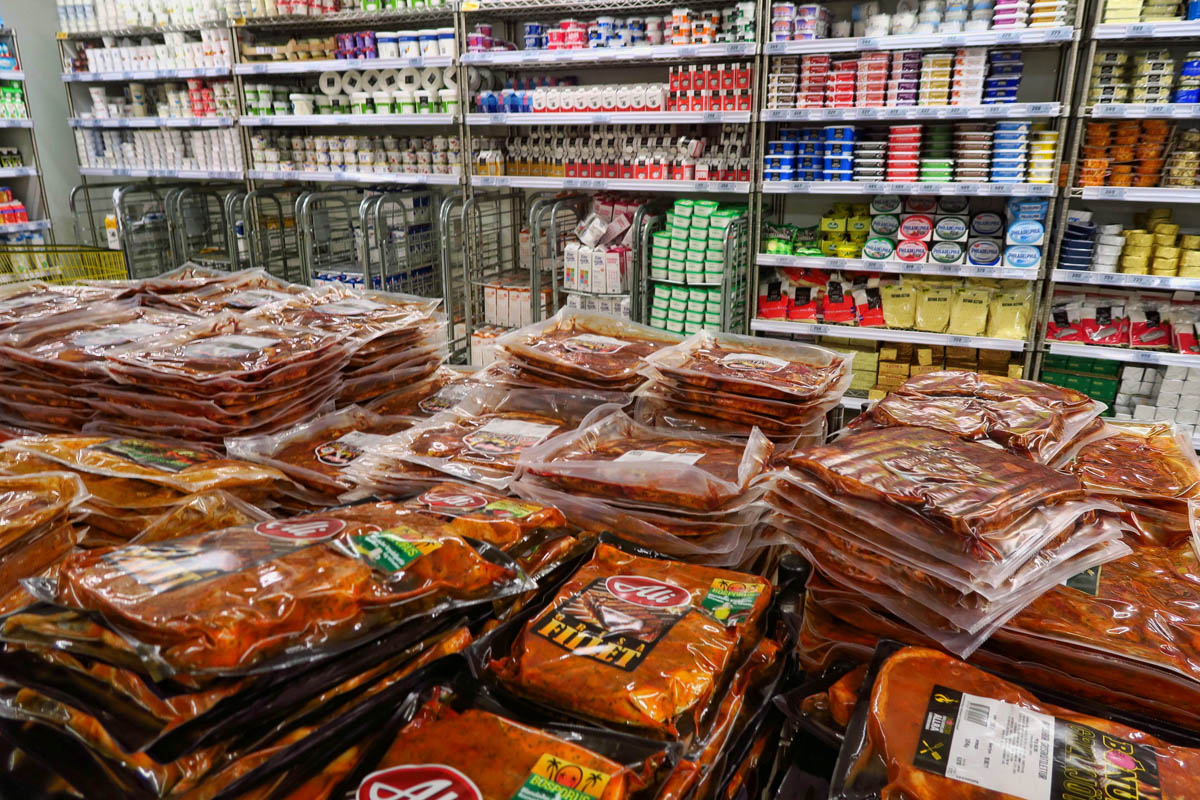 Instead of refrigerated counters for meat, cheese, dairy, etc, Bonus just puts everything into one big “cold room.” It was absolutely freezing in here, plus I was wearing a mask so my glasses were completely fogged over. Not only could I not read the labels (Icelandic,) I couldn’t even see the labels!! 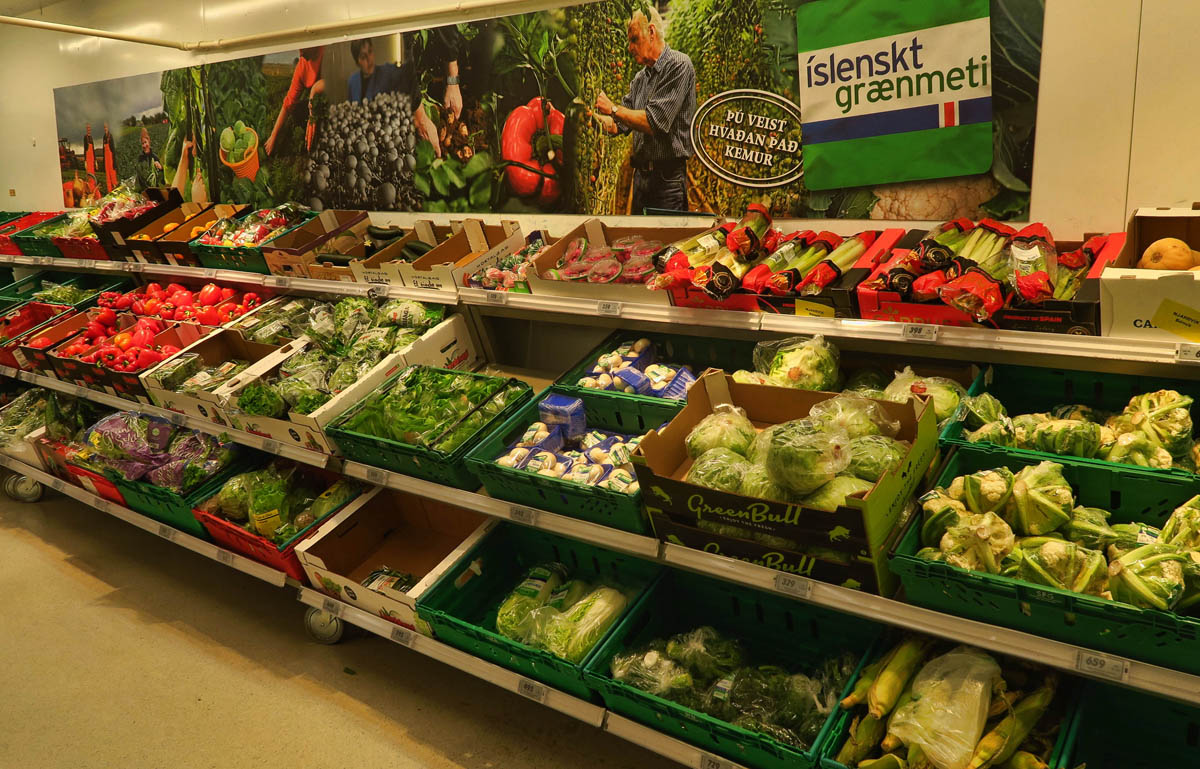 Their produce section is also in one big cold room. Take a coat when you go to Bonus to shop! 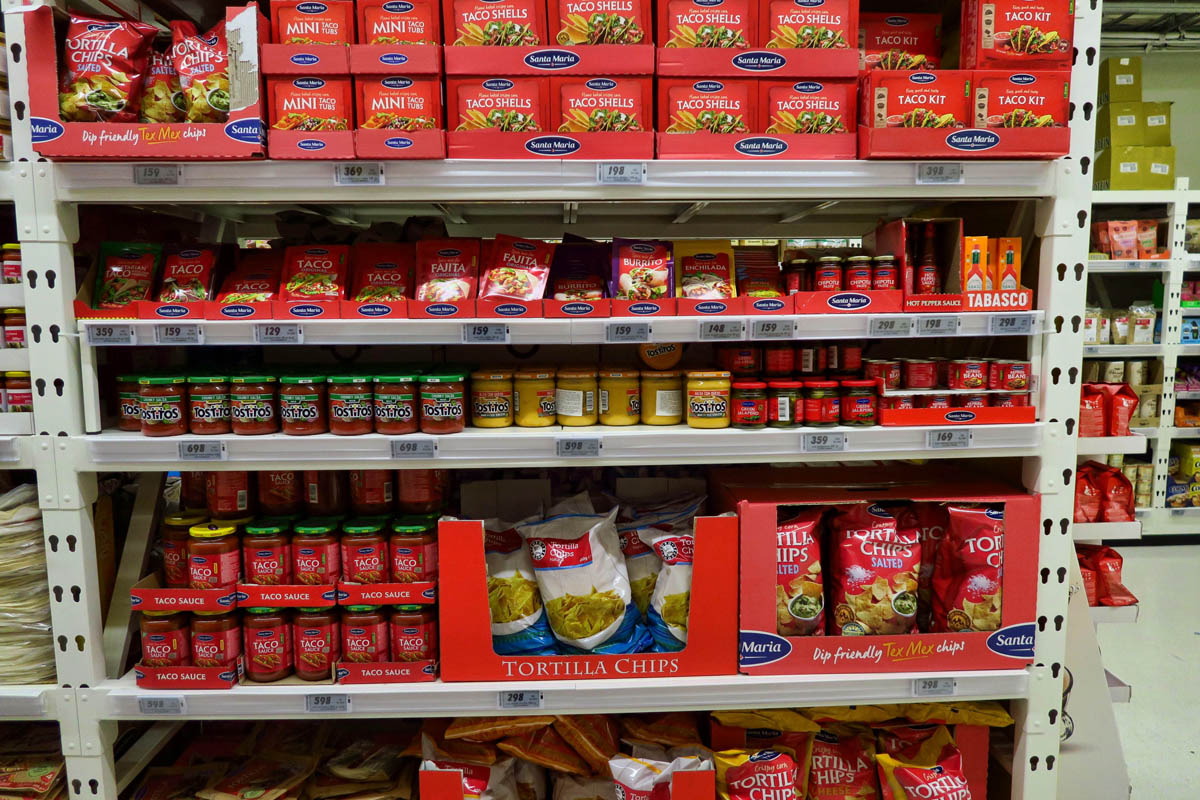 There are some imported items, like this entire Mexican food section. Go figure! Doritos and Lays are really big in Iceland, and they are about the same price as the US. 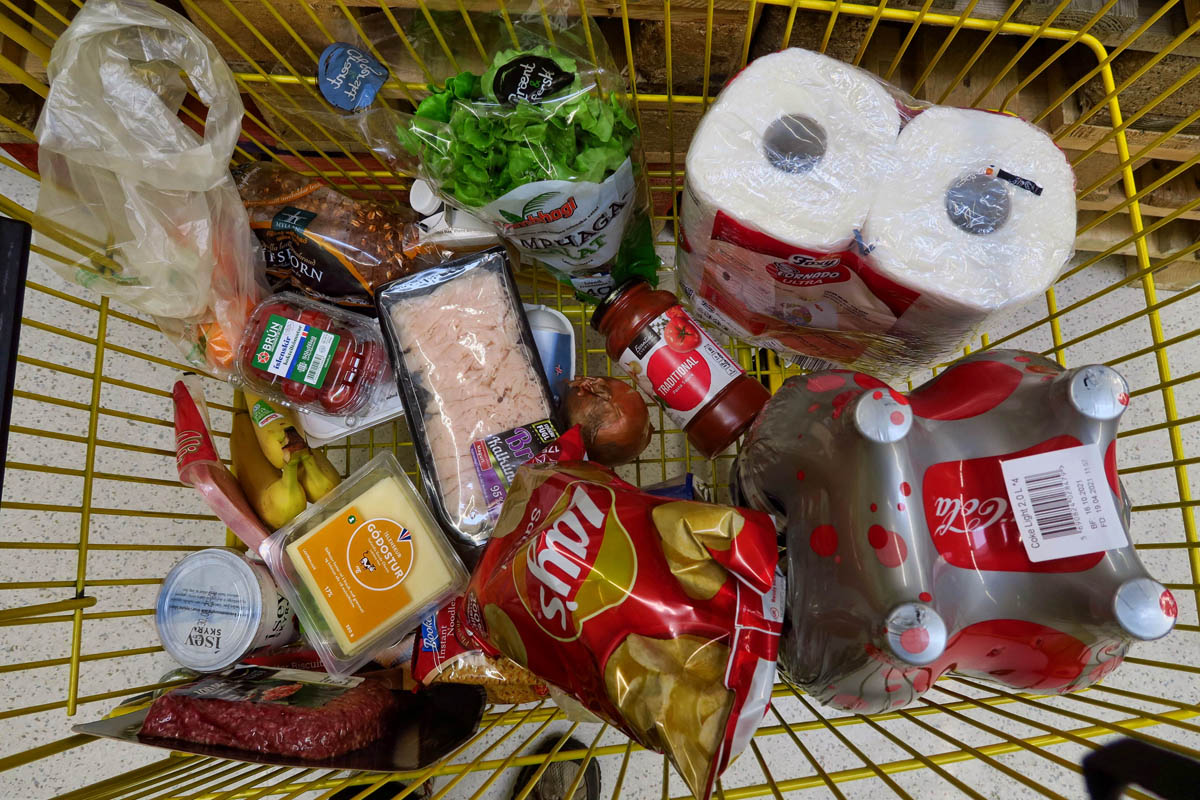 I did okay for my two weeks. I bought ham and 2 kinds of cheese, shaved turkey and bread for sandwiches, eggs for breakfast (along with instant oatmeal from home) a packet of ground beef which I split between Spaghetti Bolognese with fresh mushrooms, and 3 taco salads. A couple of apples, bananas, an onion, tomatoes, lettuce, yogurt, and creme for my coffee. And a double roll of paper towels. All total for this cart, just under $80. 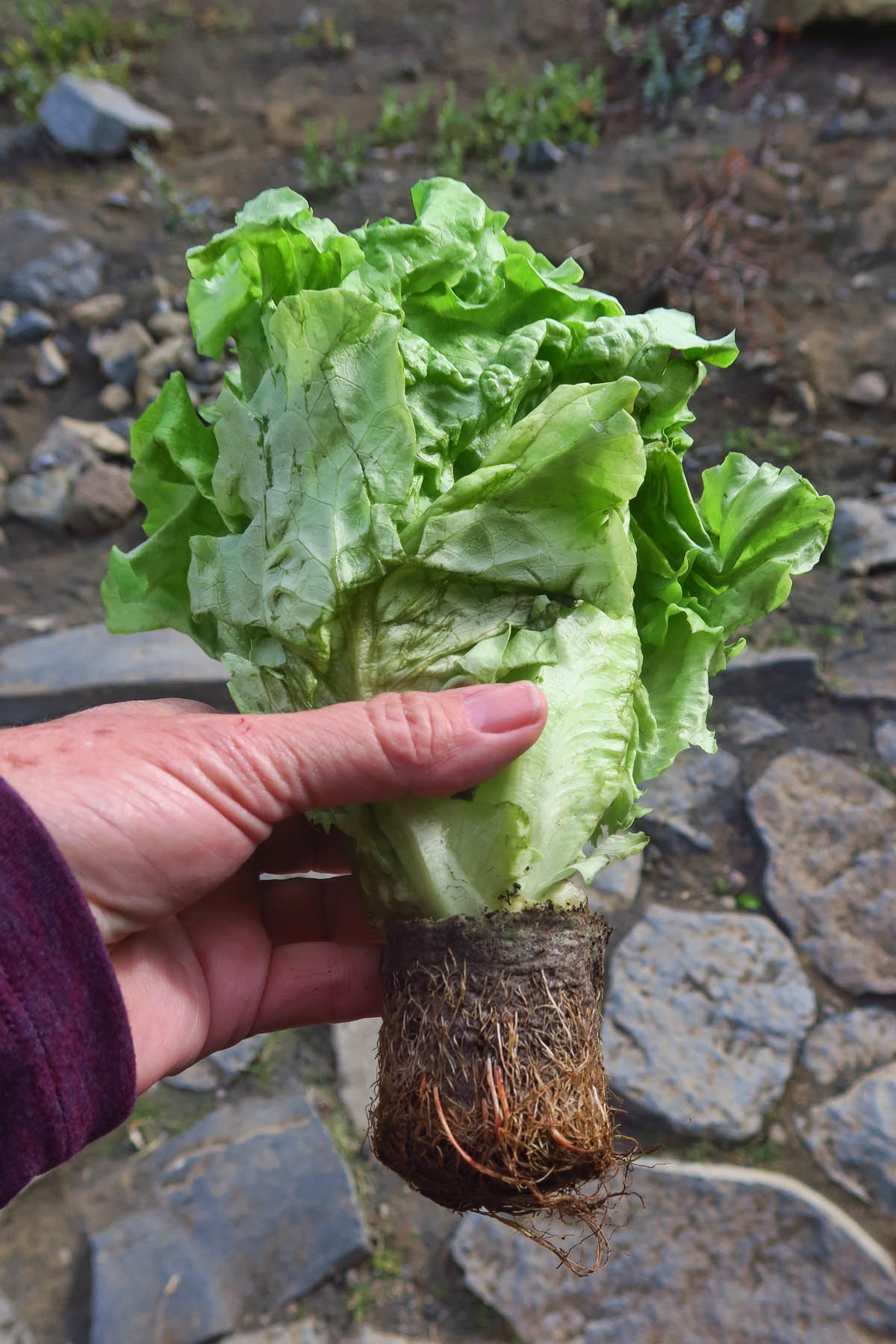 I kept wondering how my lettuce was staying so fresh in that little ice box. Little did I know until I opened it up, but it was still growing! 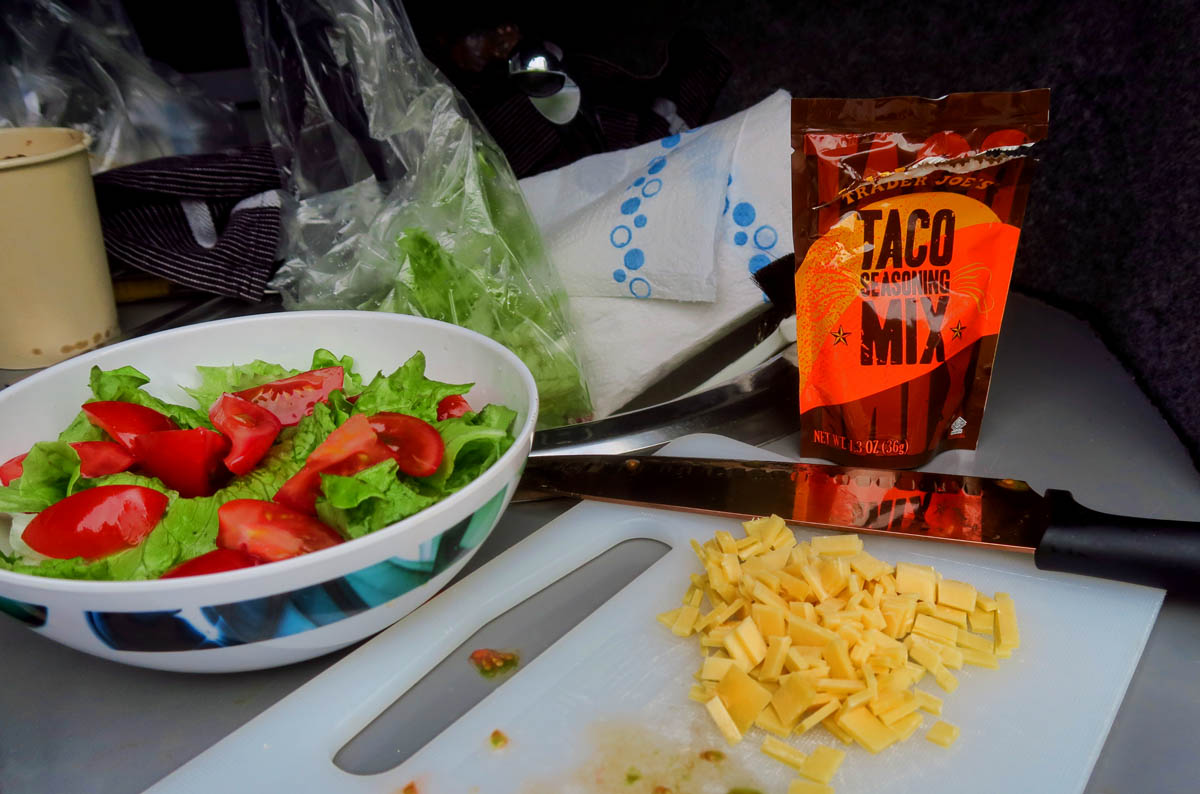 I brought along a packet of my favorite taco seasoning from Trader Joes for taco salads. Also used it in ramen noodles which really hit the spot on a couple of cold nights!

There is also the expense of campsites. Just 3 to 4 years ago, wild camping, or boondocking was allowed in Iceland. Just park anywhere, along a lake, beside a waterfall. This was one of the things that most endeared me to Newfoundland, was the ability to park almost anywhere. I overnighted in pull-outs overlooking the ocean, lighthouse parking lots, and even one quiet, scenic graveyard. But you can no longer do that in Iceland. The most popular camping vehicle is the camper van, which alas does not come equipped with toilet facilities. So as popularity of camping grew, so did the problem of human waste.

So now, wild camping is considered illegal in Iceland, and carries a fine. One must camp in an official campground, or on private land with the owner’s permission. Campgrounds are in abundance and easy to find. They don’t require reservations, and are almost always available, if not, there is another one 20 minutes down the road. However, they are little more than a grass parking lot with toilet facilities. The least I paid was 1,200 Kr (about $9.50 USD) for a senior rate in the national forest. The most I paid was 2,200 kr ($17.40 USD) in Grindavik for a new campground just three miles from the volcano eruption site. But for once, the solo traveler is favored, as campgrounds charge by the person. So it’s no real bargain for the couple or family. Often times, all that gets you is a toilet, a public sink or kitchen, and a legal place to park. If you want a shower, that often costs extra, but that just adds to a case for a nightly stop at the local hot spring. 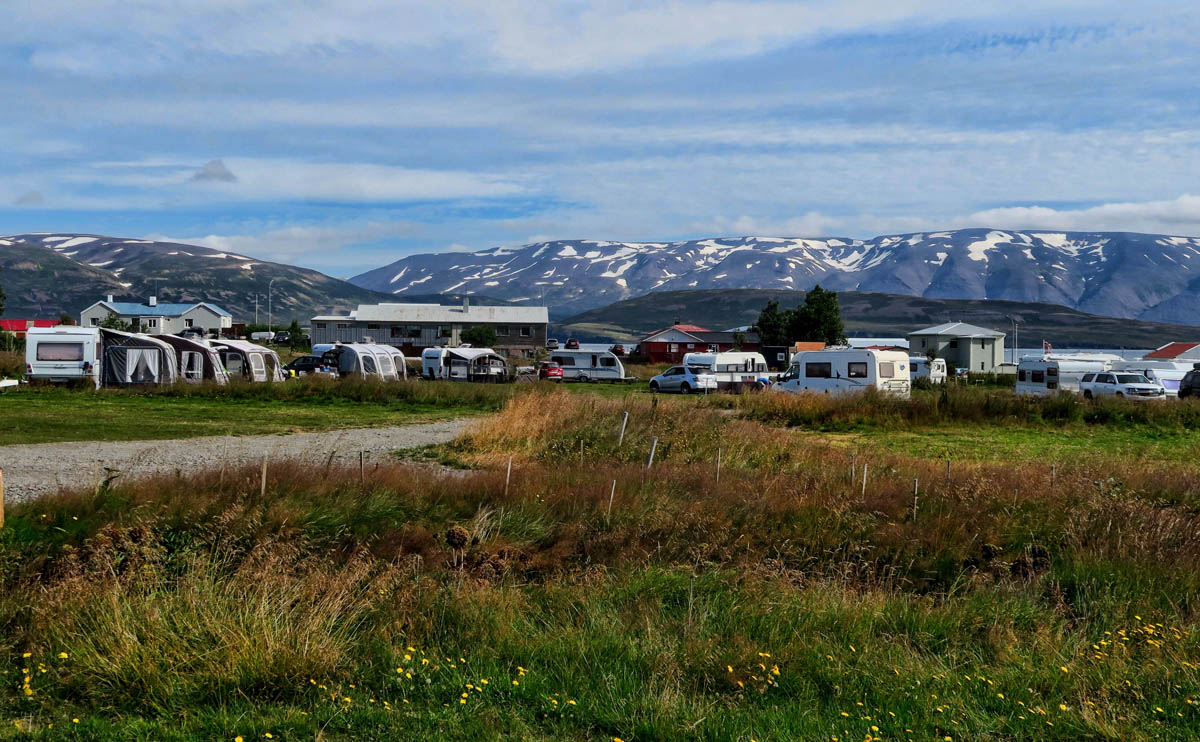 Some campgrounds are in stunning settings, but like the US, everyone is jammed into one spot. Note these are mostly travel trailers, i.e. local Icelanders on their annual August holiday week. 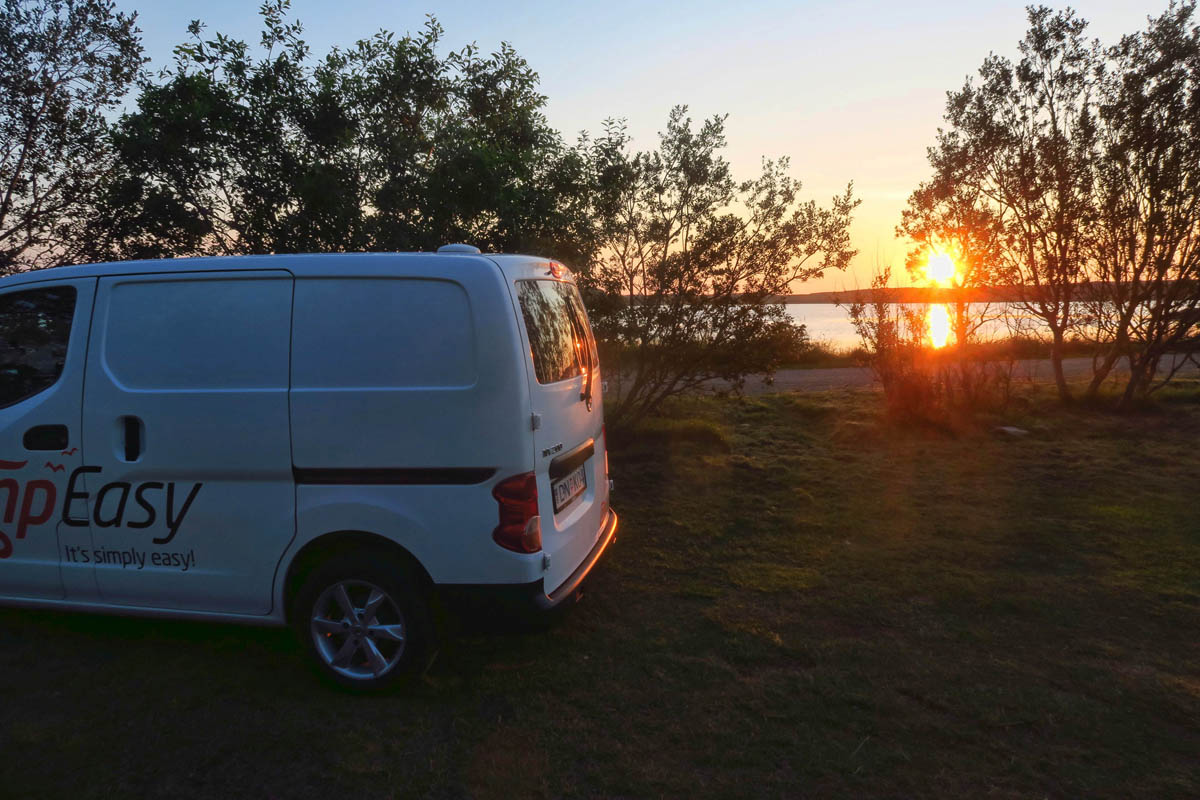 Occasionally, I have found campgrounds off the beaten track that are less crowded. Tough to tell from this photo, but the sun is setting over a lake. 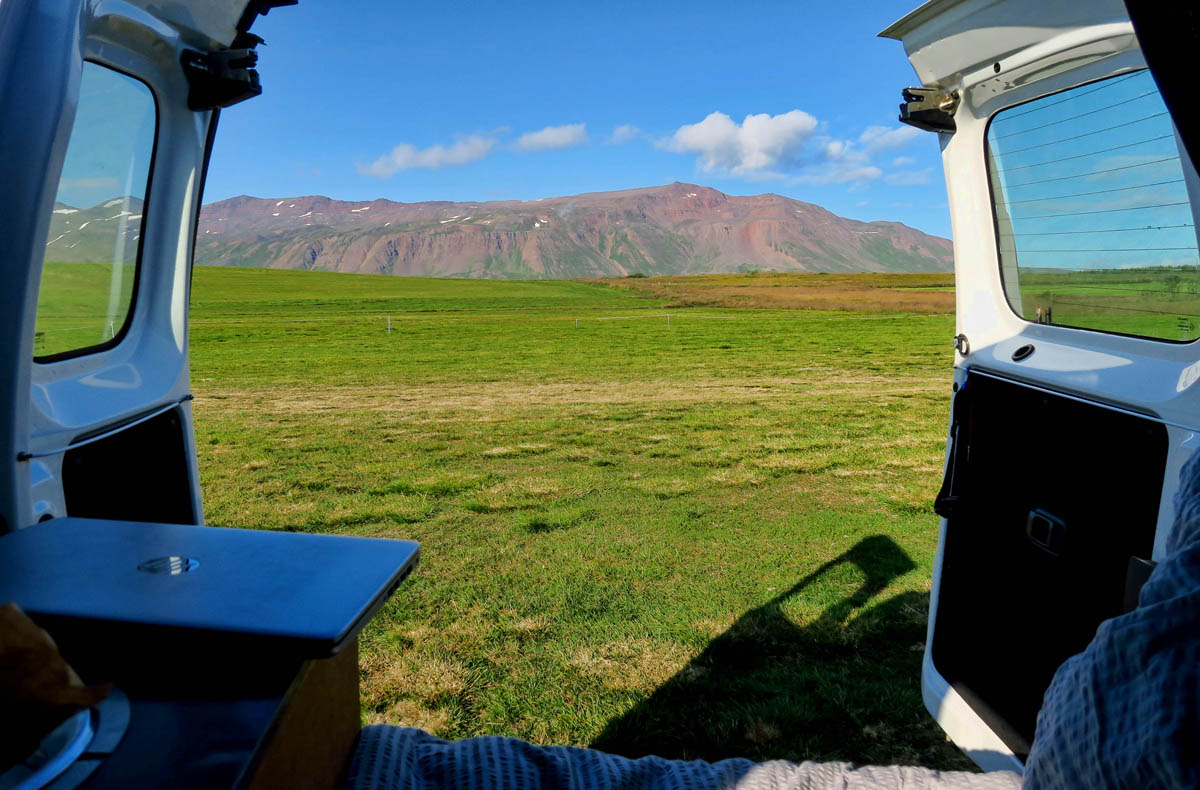 I thought I would do a lot more of the “vanlife” camping with the back doors open to nature, but fact is there hasn’t been time. “Gotta make hay while the sun shines!” 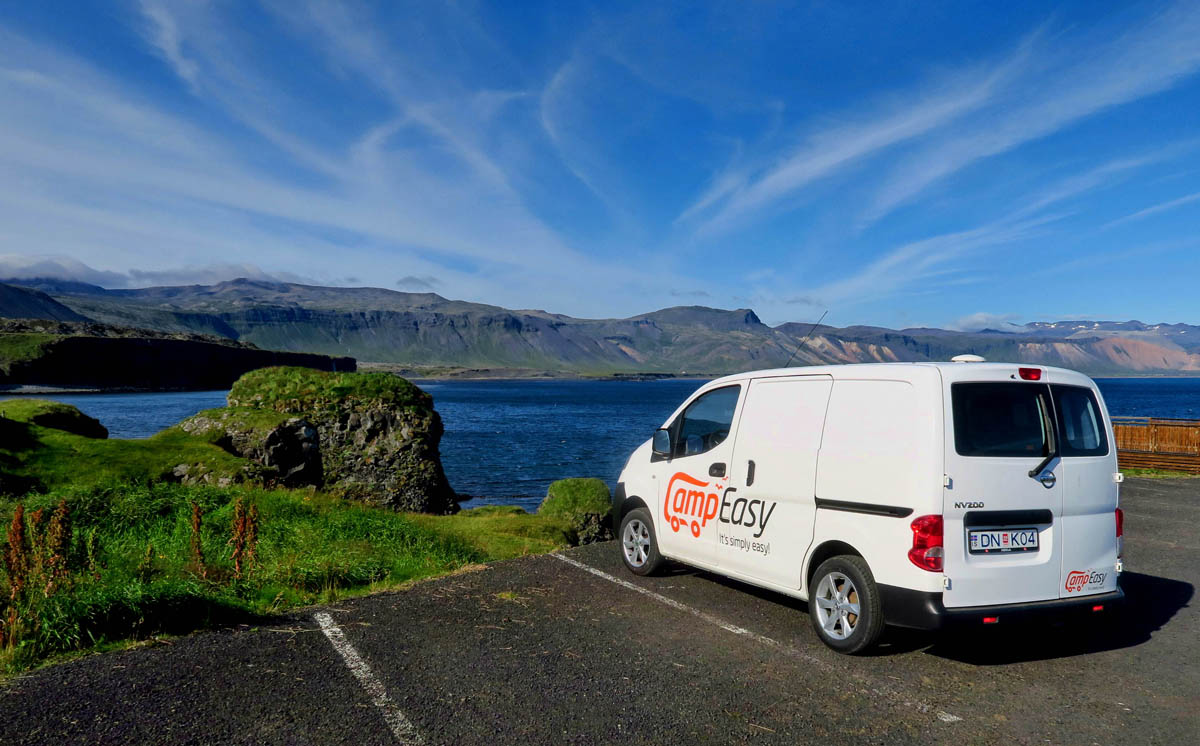 There are some benefits that have come with the CampEasy rental. A key fob 3% discount at the local N1 station (shout out to Terri) and a tablet with attractions and turn by turn directions loaded. Their navigational system has proven to be much more reliable than Google Maps!

Getting reacquainted with a stick shift has been amusing. Before I even left the CampEasy lot, I started the engine off without engaging the clutch, causing me to lurch forward six inches. I quickly looked side to side to make sure no one was looking for fear they would take away the keys before I could do irreparable harm to the gear box. But it hasn’t taken me long to “get back on that bicycle.” 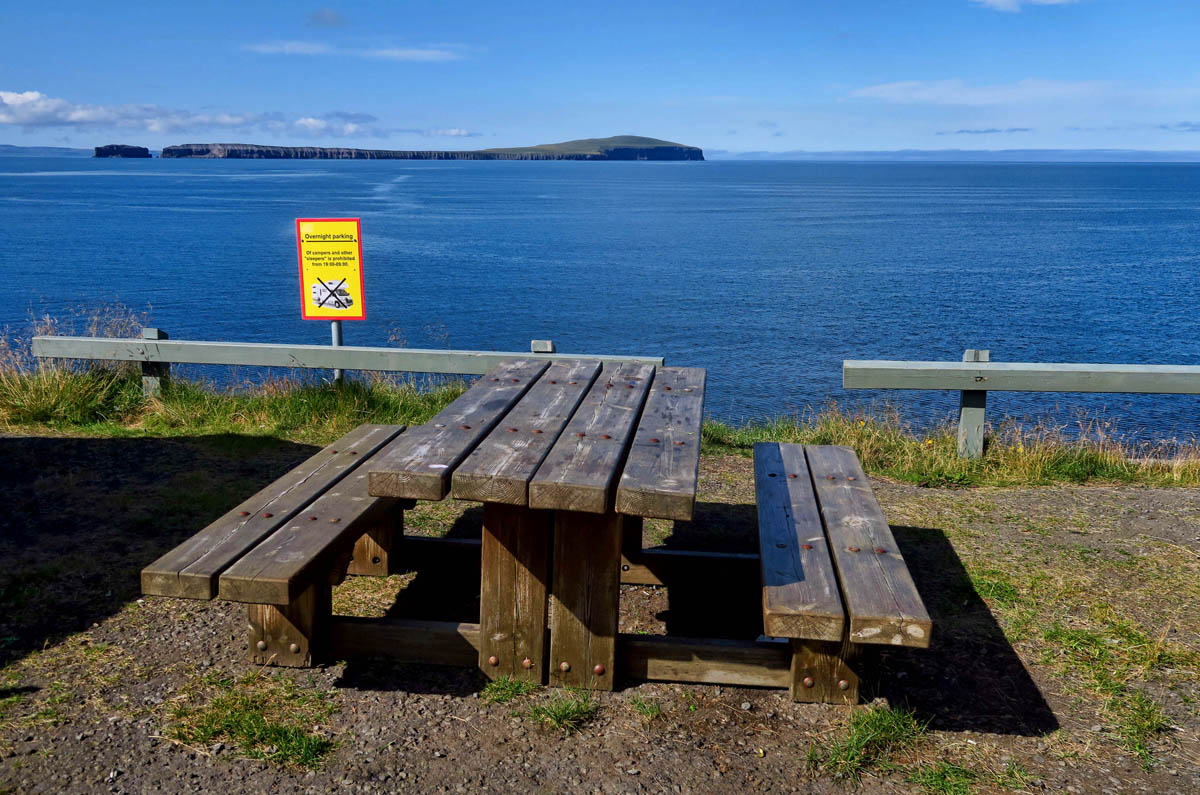 Soooo many beautiful boondocking spots, soooo many “No Camping!” signs. 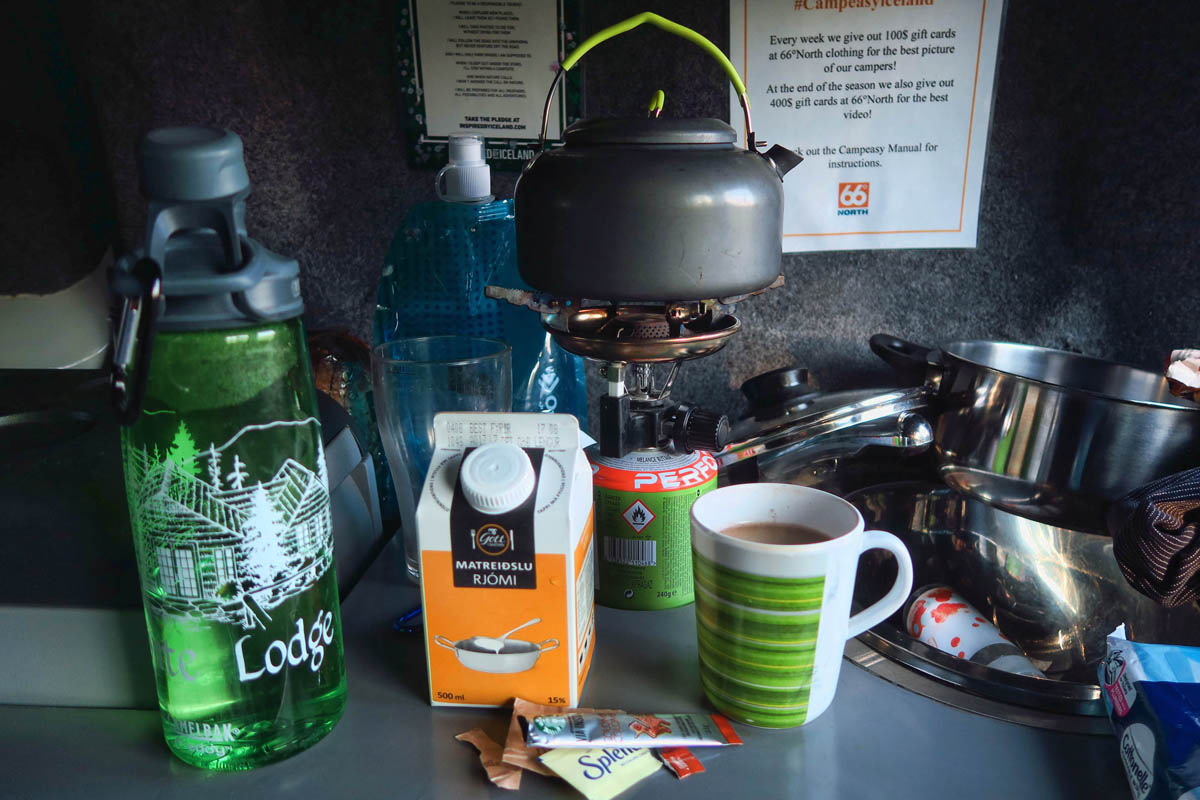 All those youtube vanlifers always show their morning coffee ritual. Here is mine. LOL! Starbucks Vias. I could have at least washed the dishes first before taking the photo! 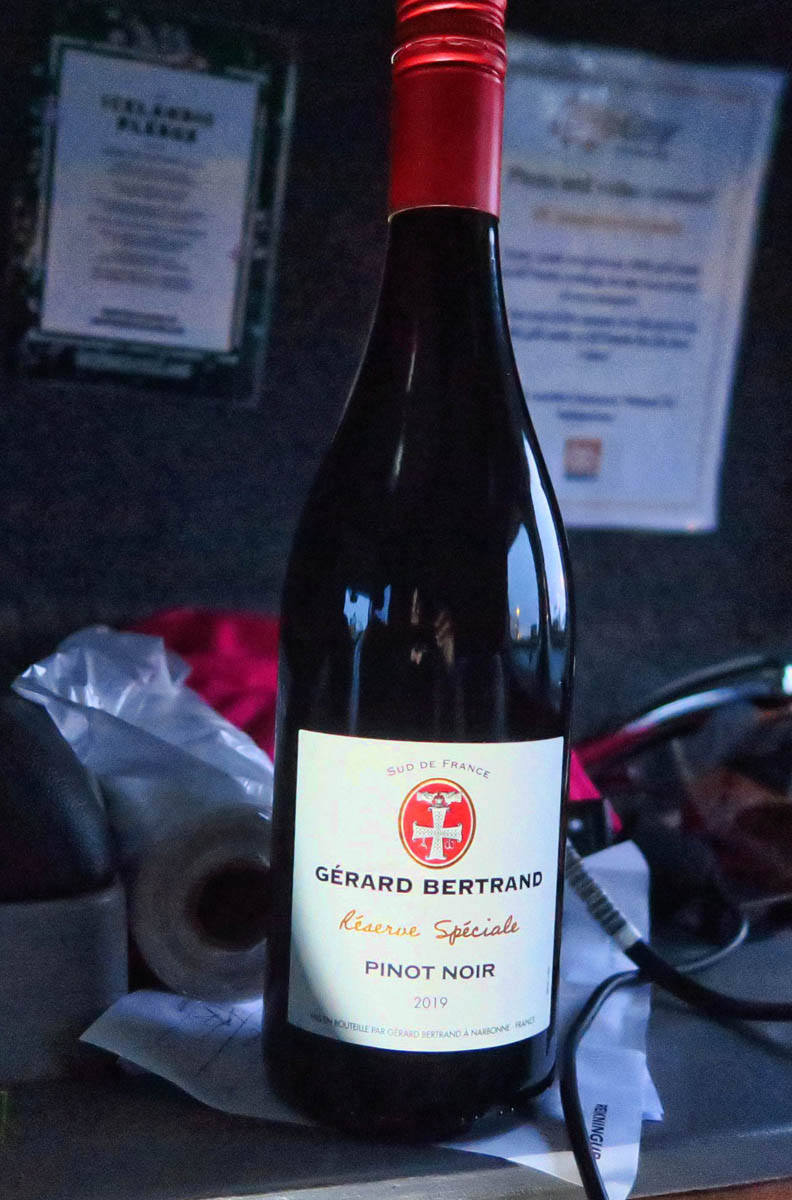 My first night in a campsite, I was walking around taking photos when I met this couple from Philly. It was their last night, so they gifted me with this nice bottle of wine. I really enjoyed it with my spaghetti dinners, and wished I had gotten their contact details so I could tell them so.

My one regret about failing to prep for the camper van is that I didn’t spend more time doing some core exercises like crunches and sit-ups. While I did do some training for the hikes by doing daily hiking while in Cloudcroft, I didn’t spend much time on my core. Lifting, bending, contorting, all from a sitting or bent position is tiring on the entire body. My core muscles are sore! One thing it confirmed, if I ever decide to scale down from the Winnie, the deal breaker would be having enough room to stand up to put my pants on!

13 thoughts on “The Camper Van”