Once again picturing the clock face now right around four o’clock, if I’m lucky, things should start to get icy. But as I work my way south around Iceland’s Ring Road, I have a lot of uncertainty as I approach the glacial lagoon area. Now being the warmest time of the year, will there be ice in the lagoons? What about the famous “Diamond Beach?” If there are no “diamonds” (ice formations) washed up on Iceland’s famous black sand beach, it will be a serious let-down. 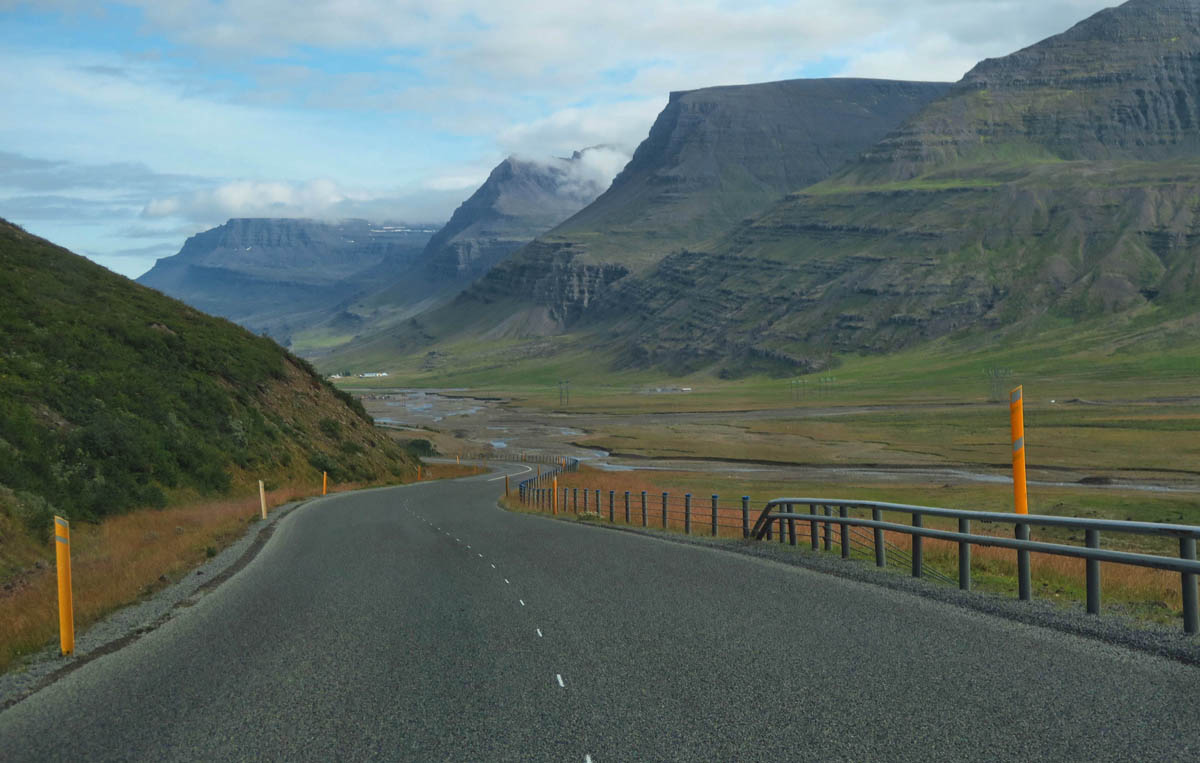 Another beautiful spot along the Ring Road, Route 1. 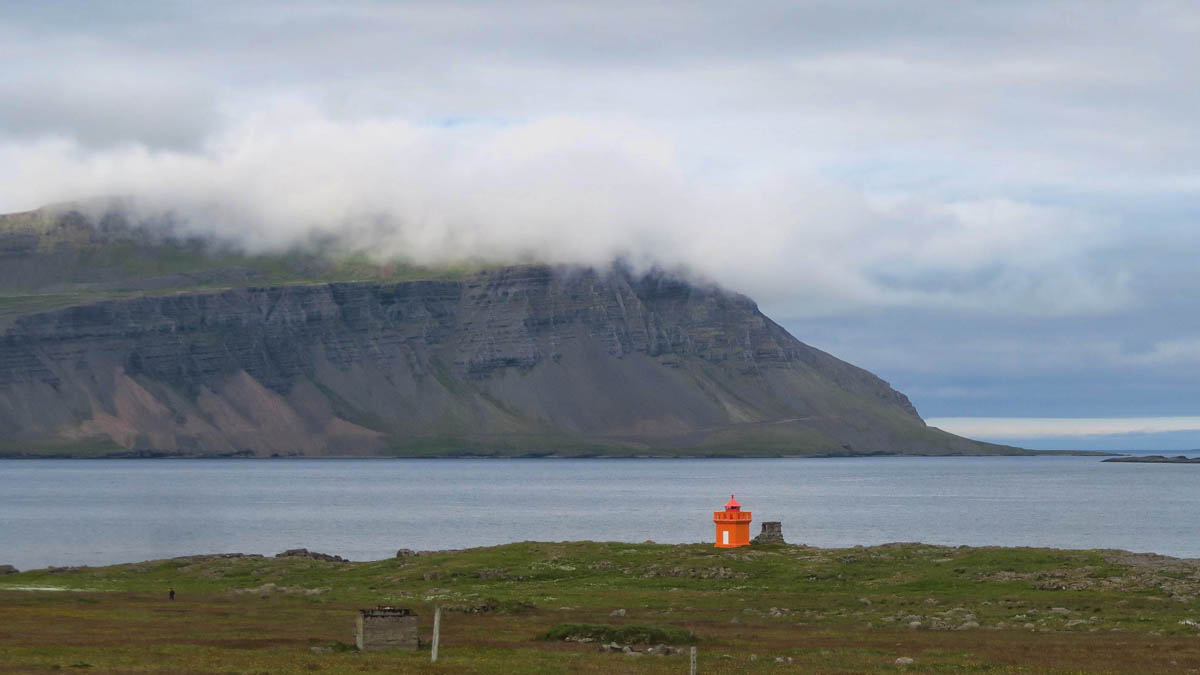 You see a lot of these “mini-lighthouses” along the way, always orange. 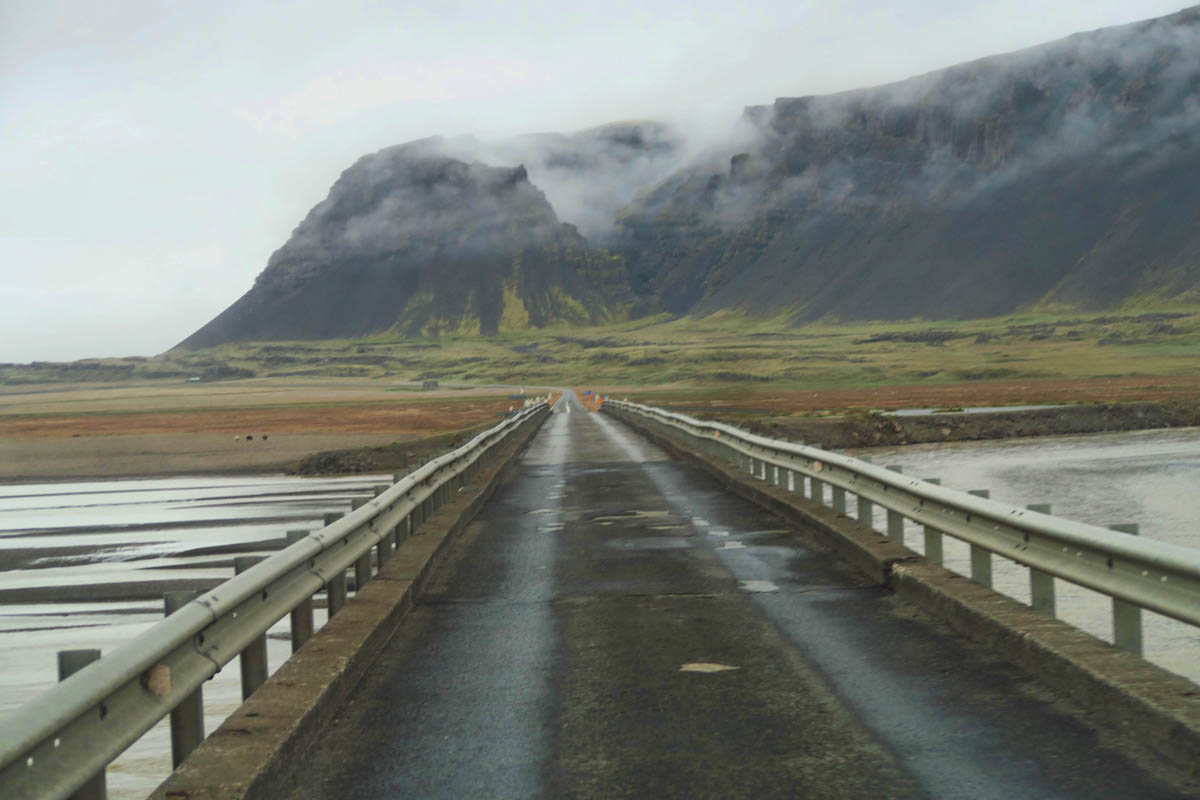 Almost all the bridges along the less traveled sections of the Ring Road are one lane. Slow down to 35mph, and be sure to check for oncoming traffic before you enter!

One thing for sure, I had long decided I would not spend any money on any of the ridiculously expensive lagoon tours. One can get out into the lagoons for an up close view of the ice in a number of ways; kayaks, rubber inflatables, and even those ridiculous amphibious vehicles that drive on land and turn into a boat on the surface. Nope. There would be none of that. I was there to just have a quick look, and move on.

I am a bit of a self-proclaimed “ice snob.” Having set foot on the frozen continent of Antarctica, strapped on crampons to walk on the Perito Moreno glacier in Patagonia, and chased icebergs around the northern coast of Newfoundland, I figured this was an area where I would scale way back on the budget. No need to board a boat just to see a few less-impressive “bergy bits.” Or so I thought…..

This was another early morning start. I have discovered the way to get a jump on the crowds is to skip any kind of coffee or breakfast. Just wake up, jump into my clothes, and leave the campsite bound for the first attraction at once. Then once I have toured it, return to my kitchen on wheels for coffee and breakfast. This has proven to be a successful strategy, as the tour buses don’t typically show up until around 10am, giving me at least one location free from tourists traveling in packs. This held true for my first glacial lagoon visit as I arrived before 8:00am, with hardly another person in sight.

But as soon as I saw those majestic ice sculptures floating in that aquamarine water, something snapped. It was Antarctica, Patagonia, and Newfoundland all over again. I had to get out on that water for a closer look at that beautiful ice!

As soon as the ticket office opened, I was the third person in line. The RIBs (rubber inflatable boats) and kayak tours had been sold out for weeks. She had nothing to offer me but the goofy amphibious, half truck, half boat tour. How embarrassing. At least it wasn’t decorated as a duck. So I shamefully plunked down my credit card, and off I went, once again called by the lure of the ice. 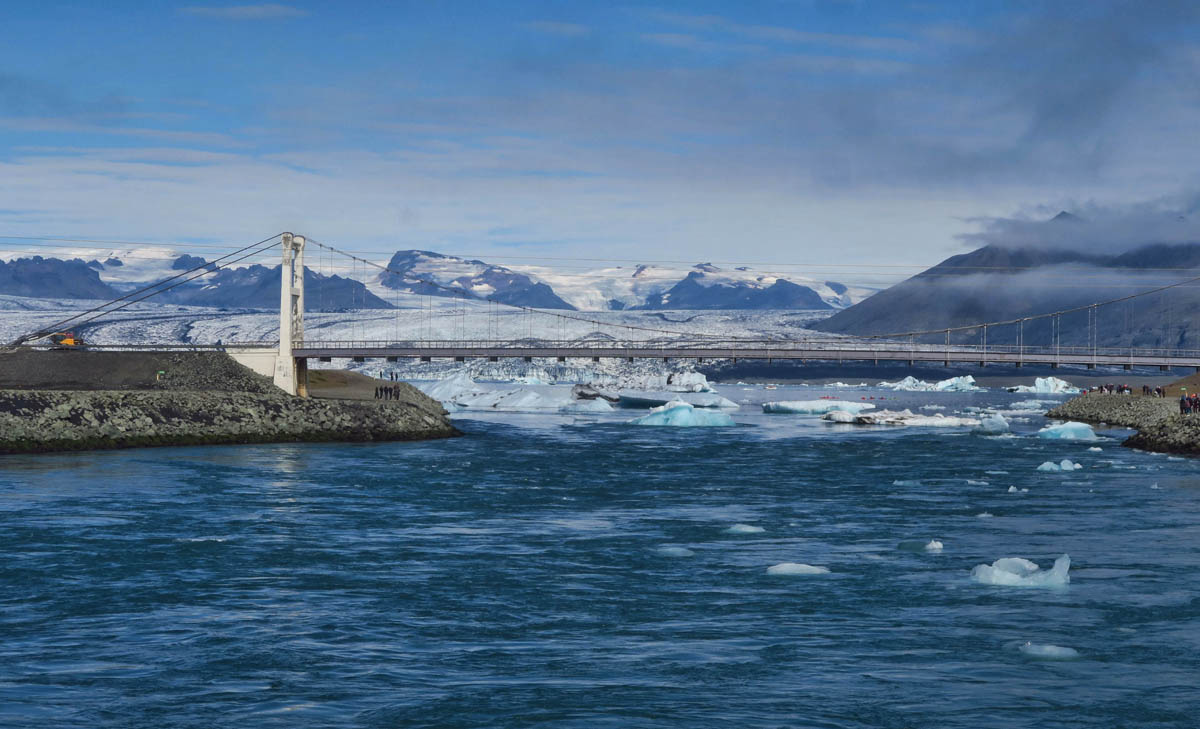 This suspension bridge is part of the Ring Road, which shows you how close the glacier is to the road. 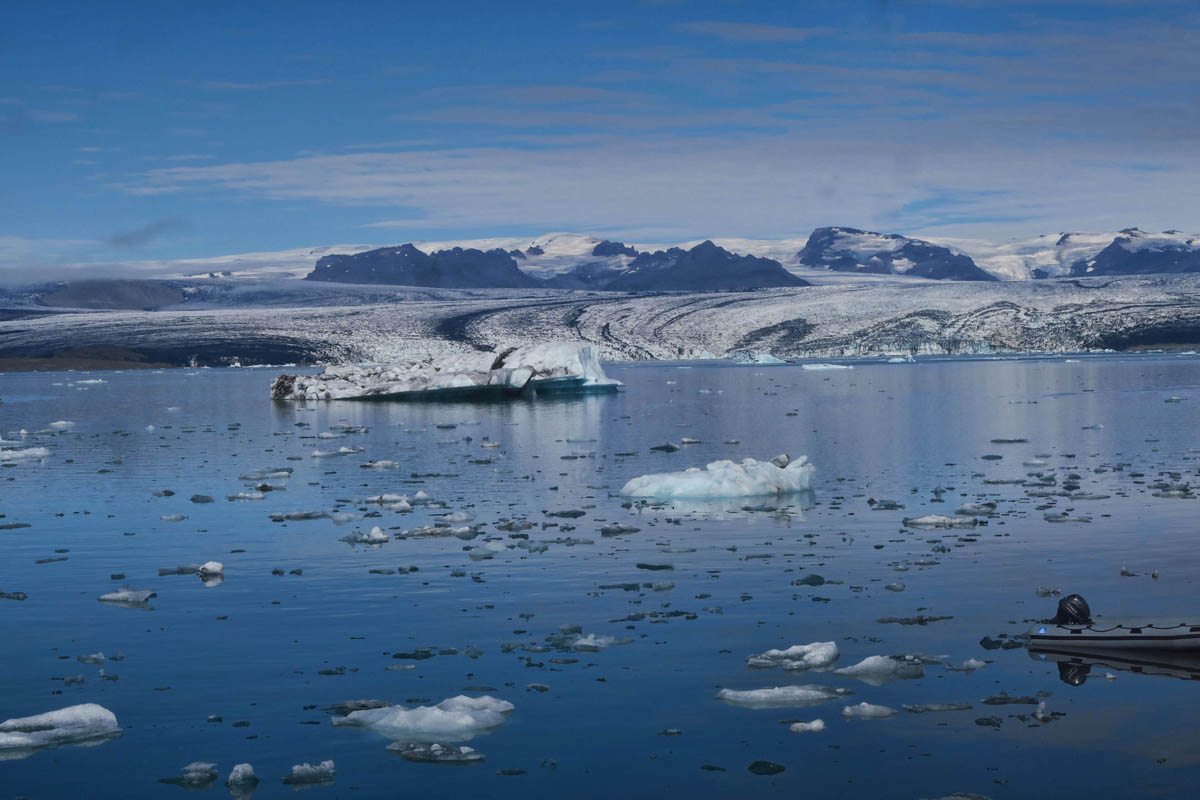 Views of the ice from the shore are stunning, but I want to get closer! 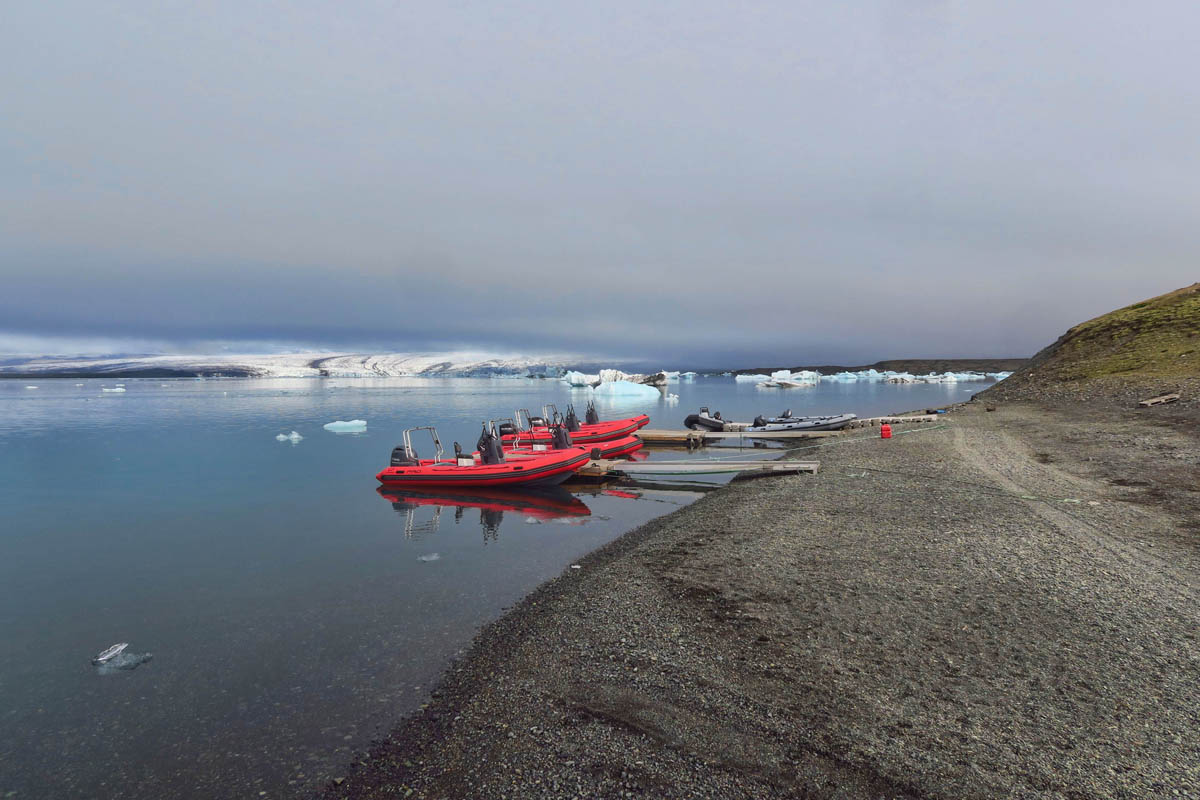 There are several options to get out on the lagoon and have a closer look at the ice. RIBs (rubber inflatable boats) or Zodiacs are the most popular choice. 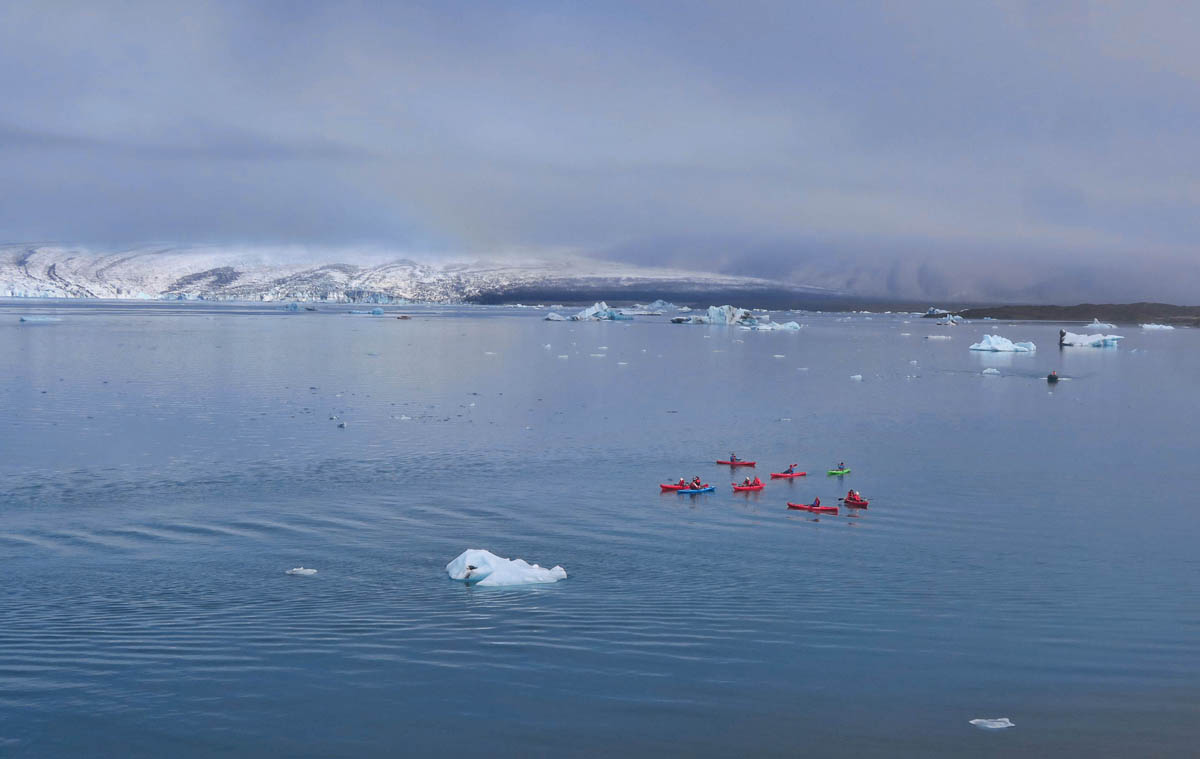 There are also kayak tours offered, but seems like a lot of paddling to have a close encounter. 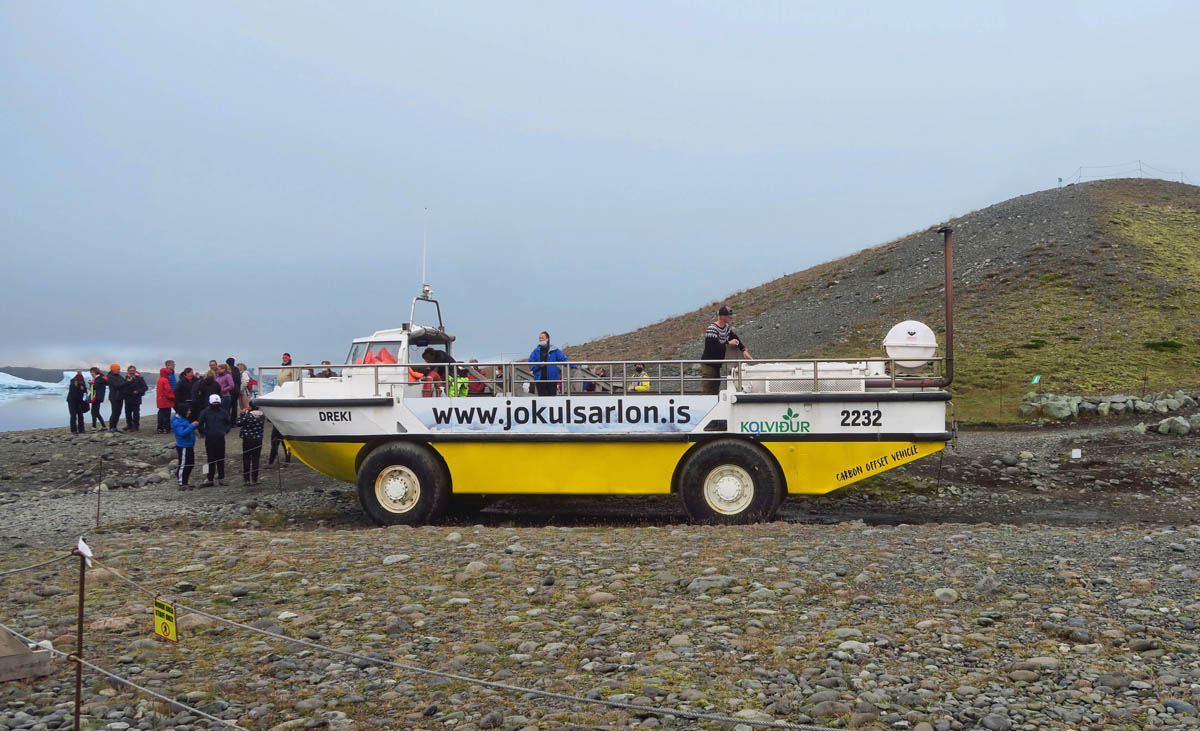 Finally, there is the goofy amphibious vehicle, half truck, half boat.

The southeast of Iceland offers the best opportunity for close encounters with the ice due to its “outlet glaciers” that extend from Vatnajökull glacier, not only Iceland’s largest, but the largest ice cap in Europe. Eleven percent of Iceland’s surface is covered by glaciers, with eight percent being made up by Vatnajökull.

Glacial lakes and lagoons form in troughs eroded by glaciers. When the glaciers retreat out of these troughs, water accumulates. It’s a bit of a snowball effect, as the warmer seawater then enters the lake, accelerating the melting of the glacier “snout,” causing the ice to break off in a process called “calving.” The largest of these troughs is Jökulsárlón, 25 km (15.5 miles) long and over 284 m (932 ft) deep. 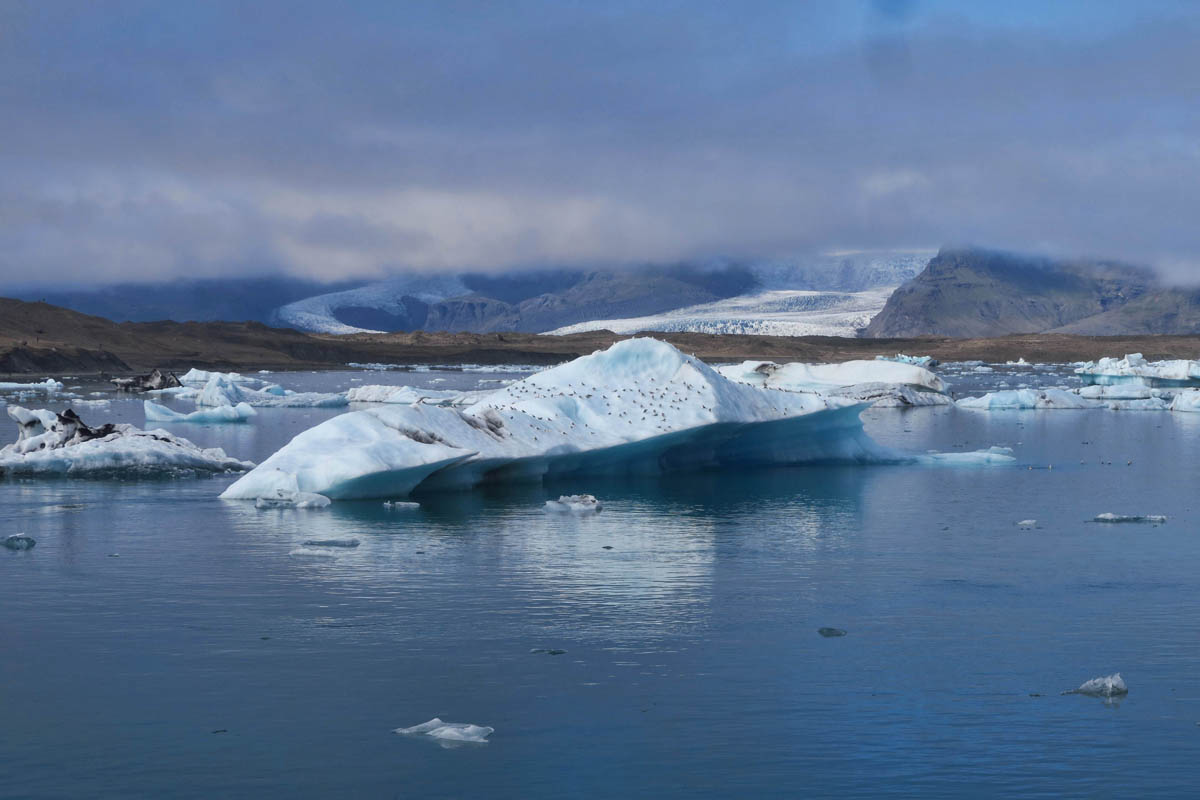 Even though the “duck boat” was somewhat embarrassing, it allowed me to have a close encounter with the ice. 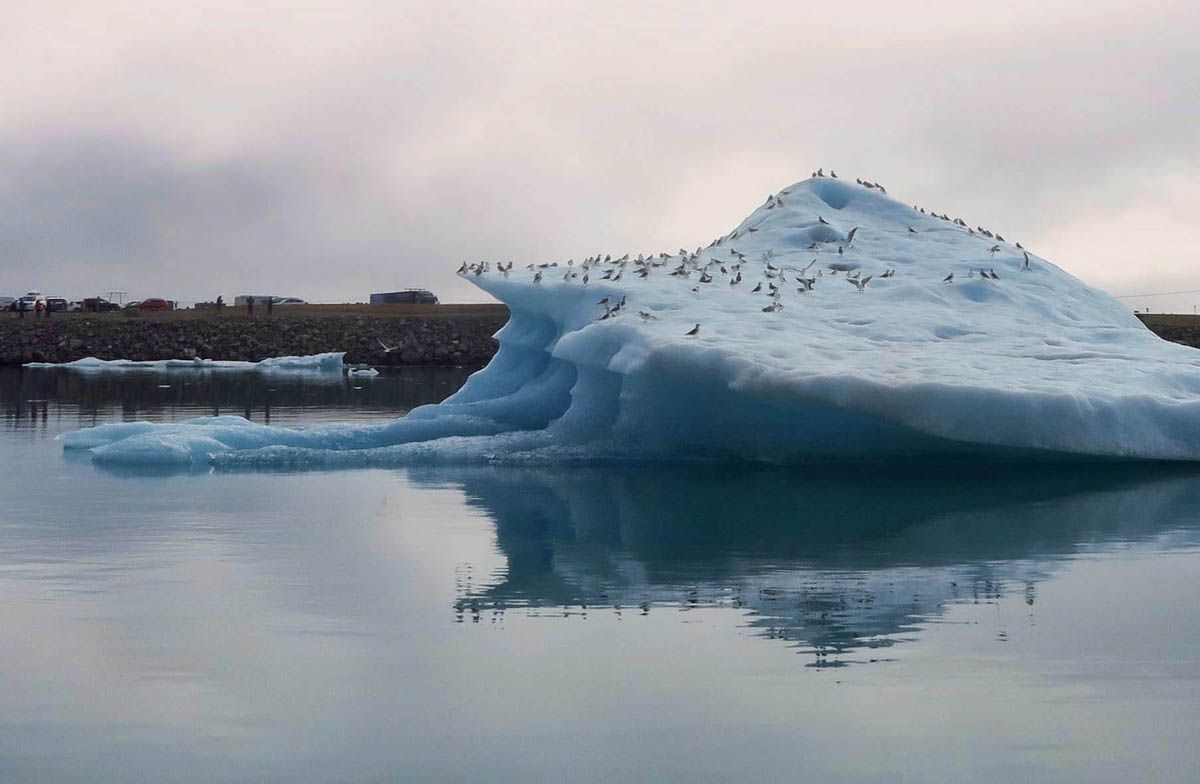 This berg is serving as a roost for the sea birds. 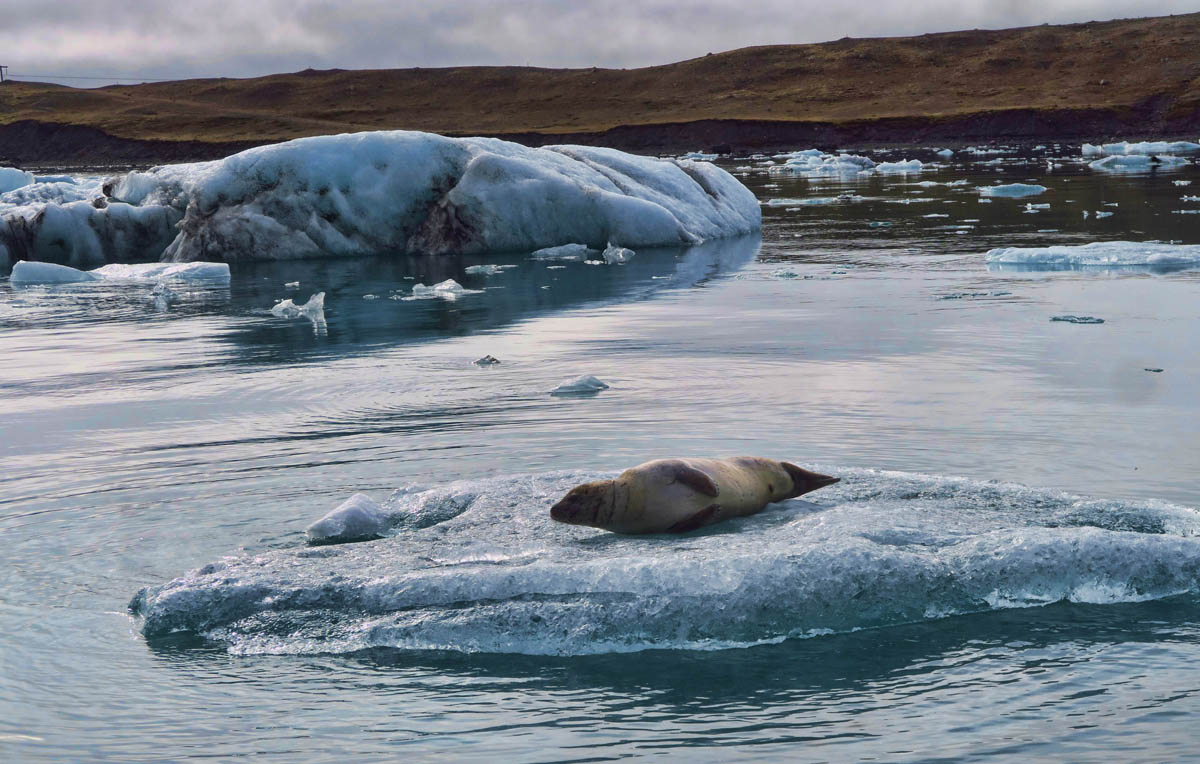 And next, we have a chillaxing seal pass by. 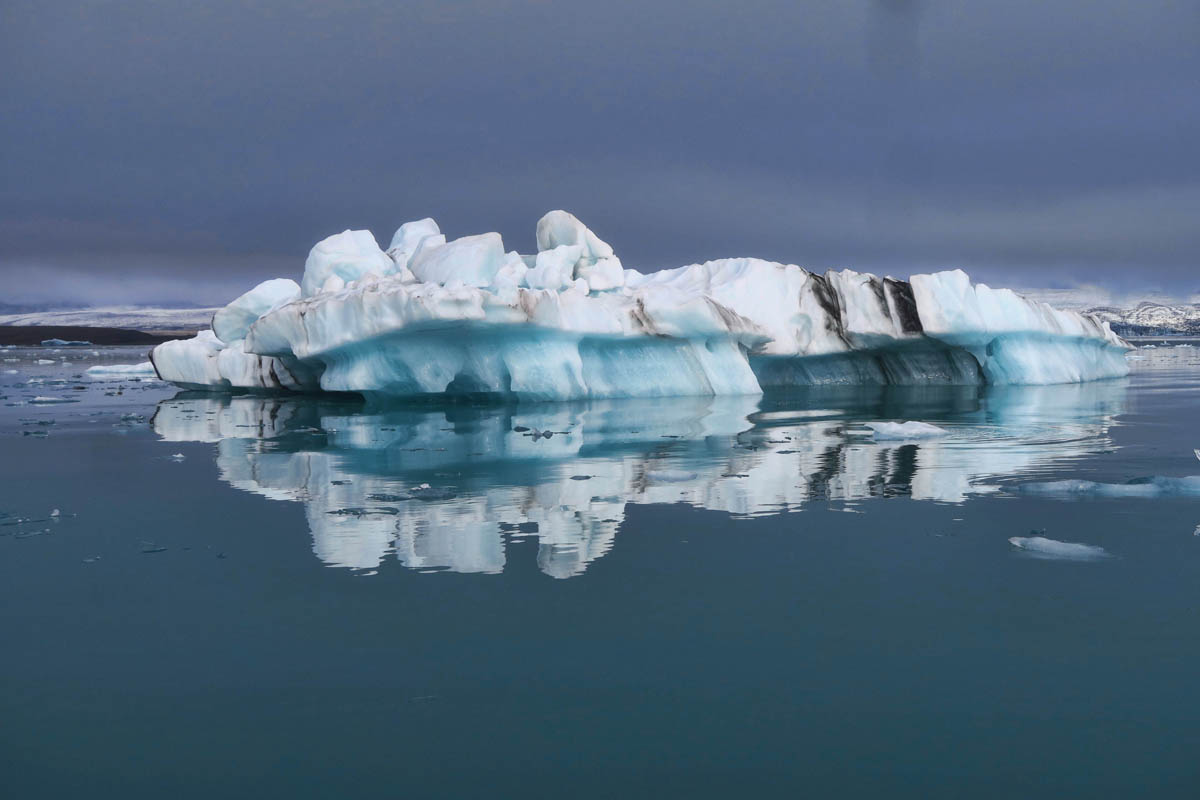 The black stripes in the ice are remnants of ash from past eruptions. 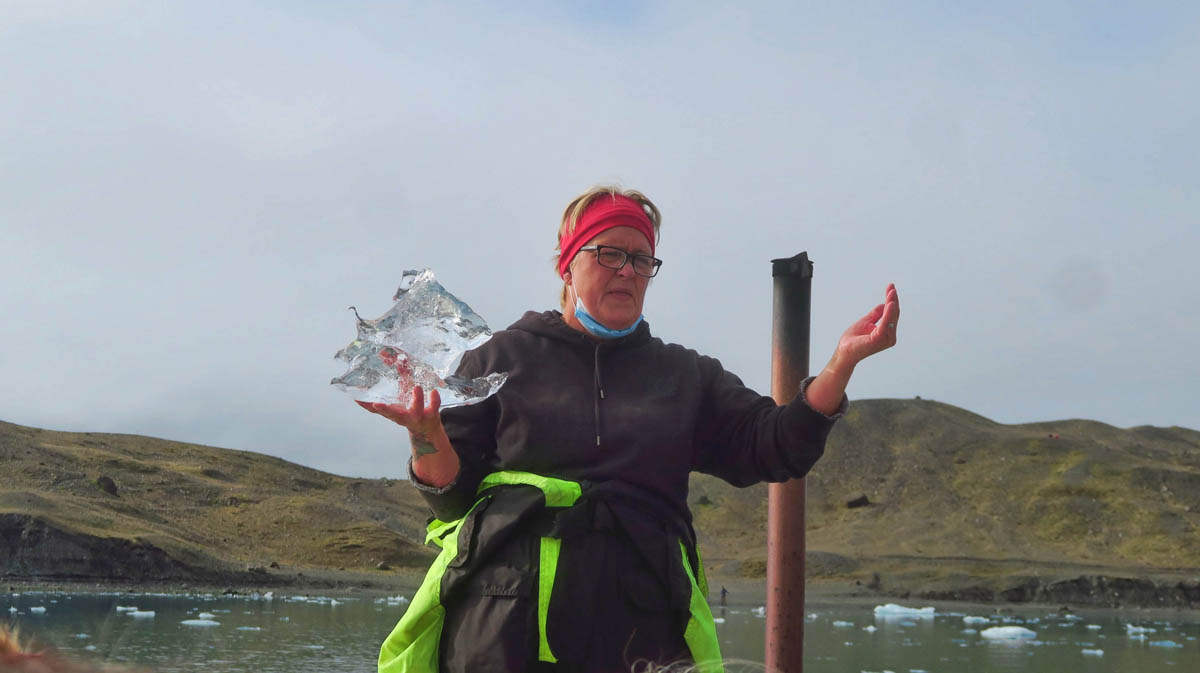 Our guide brings up a sample of one of the things I miss about the USA….ice cubes! If only I had bought some Woodford Reserve! 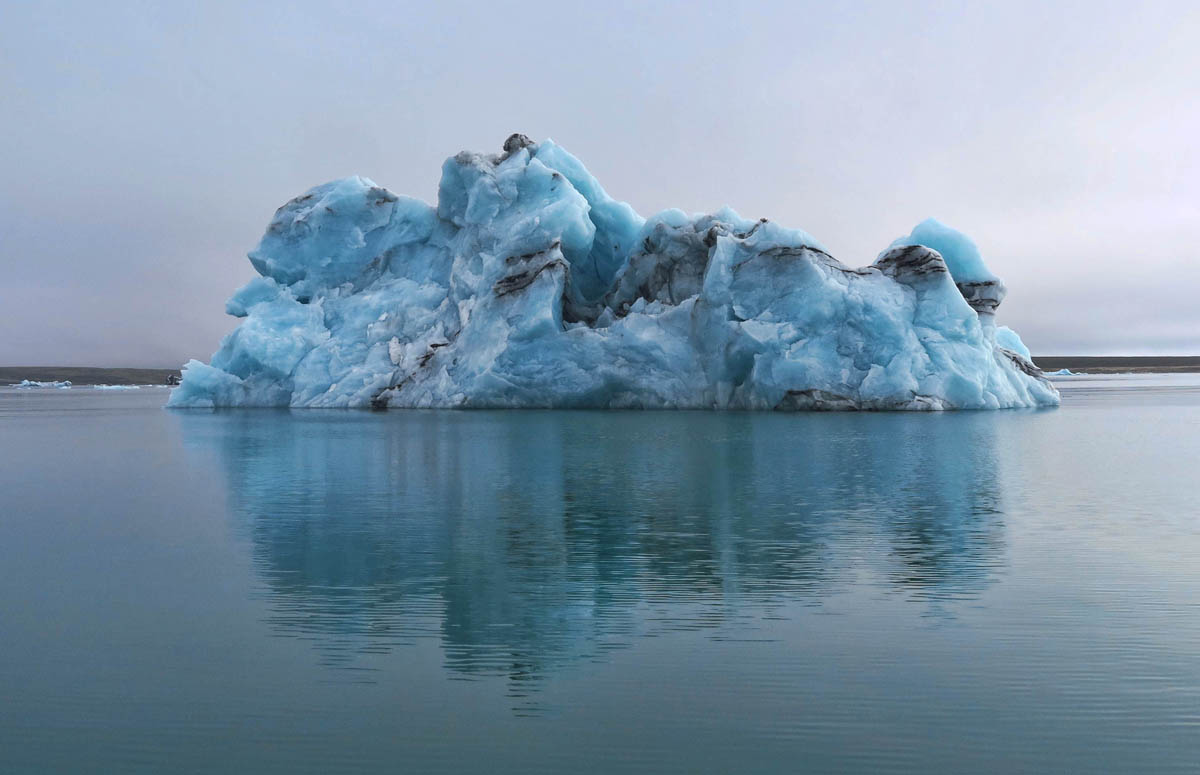 As icebergs go, “the newer, the bluer.” Blue colored icebergs are more dense, absorbing all colors of the spectrum except blue, therefore it is reflected. As the surface comes in contact with air, it enters into the ice making it less dense, and therefore the light absorption is increased, causing the ice to appear white. 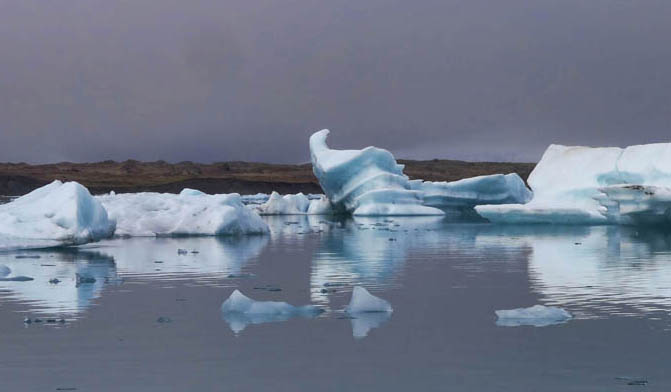 The ones that look like art sculptures are my favorites. 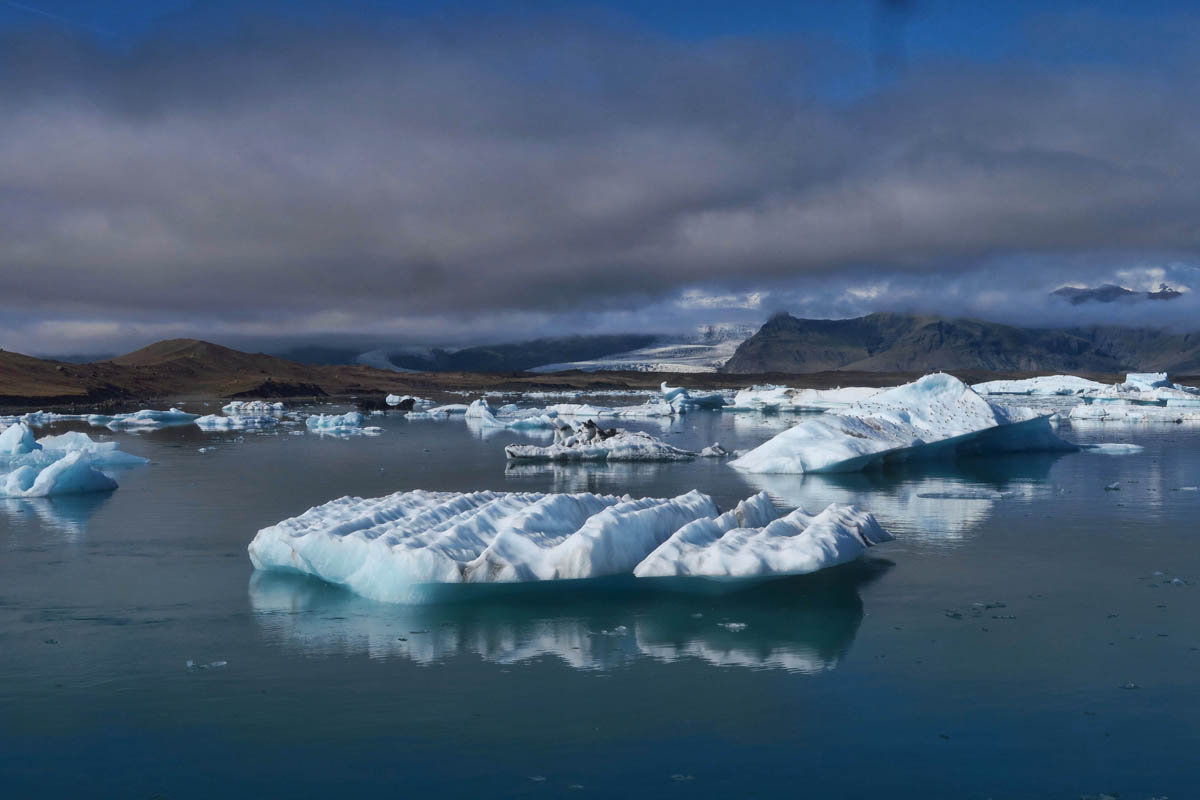 It’s always interesting to ponder what carved the shapes. I am guessing this one was probably once perpendicular, and water eroded the grooves. 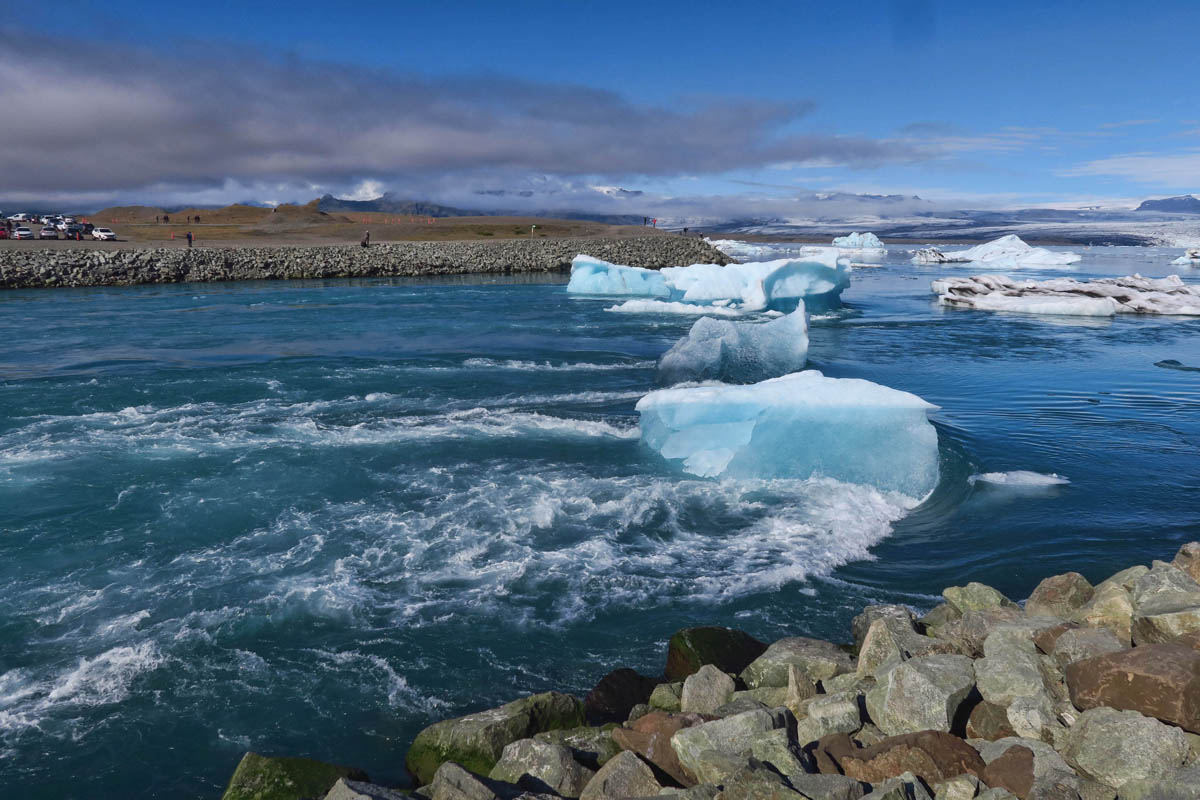 As icebergs are swept out to sea by the current, some drag bottom until broken loose. If you consider only 10% of an iceberg is visible above the surface, and the trough is as deep as a 75 story building is tall, you get an idea that some of these are pretty big!

Jökulsárlón is less than a mile from the coast, so its broken bits travel with the current, flowing out through the trough toward the sea. Many of these bits wash up on the nearby “Diamond Beach,” Iceland’s most famous black sand beach. 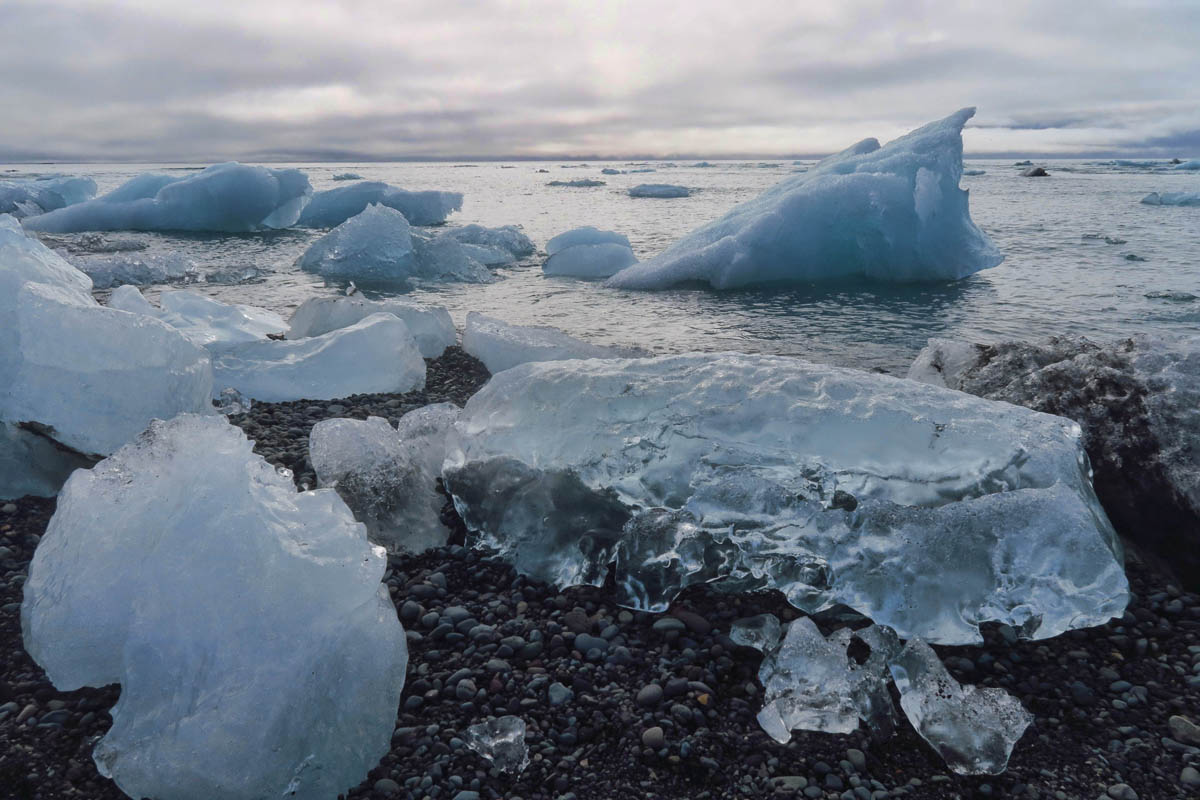 When Jökulsárlón lagoon empties into the Atlantic Ocean, many of the bergy bits wash up on shore, giving the appearance of “diamonds” glinting on the beach. 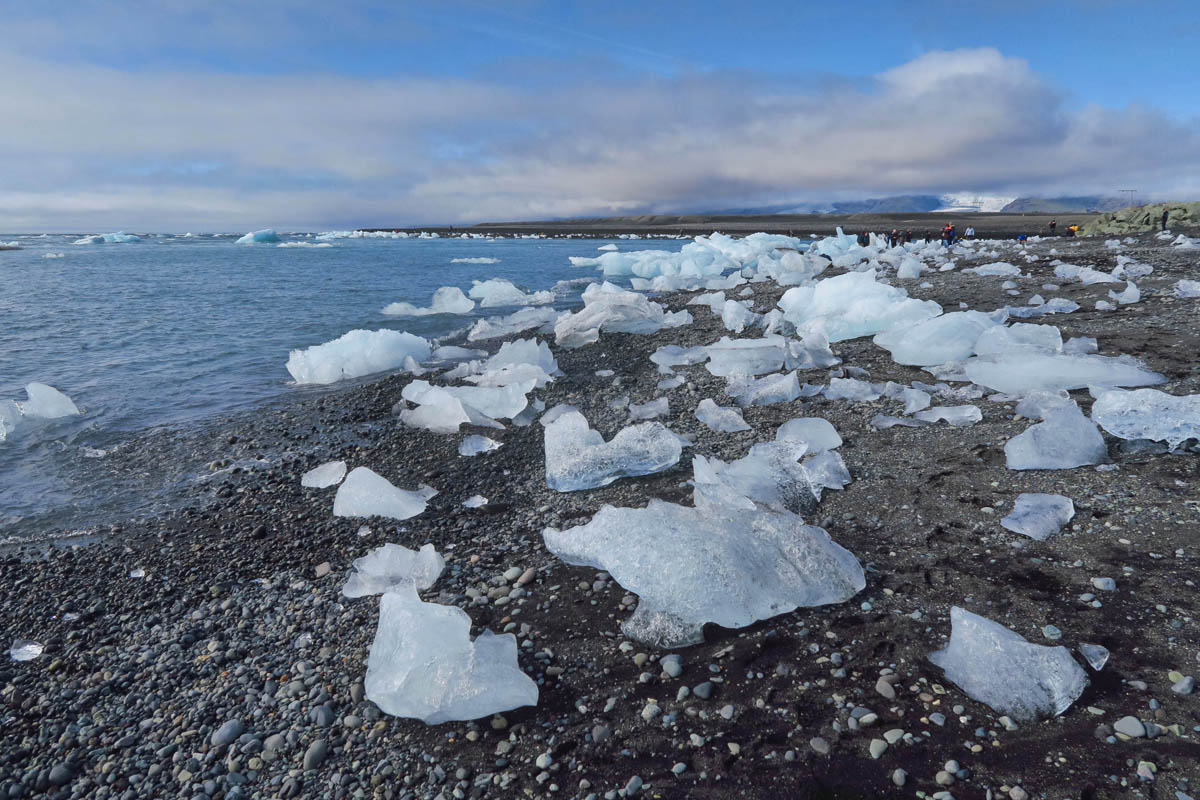 This earned Iceland’s most famous black sand beach the name of “Diamond Beach.”

Just down the road about a mile is the much smaller, quieter, more intimate Fjallsárlón Glacier Lagoon. While its muddy water lacks the brilliant blue color of Jökulsárlón, its small boat tours offer an opportunity to get closer to the face (or “snout” as it is technically called) of the glacier.

Unlike Jökulsárlón, Fjallsárlón is not connected to the sea. This means the icebergs stay there bobbing in the lagoon until they melt. 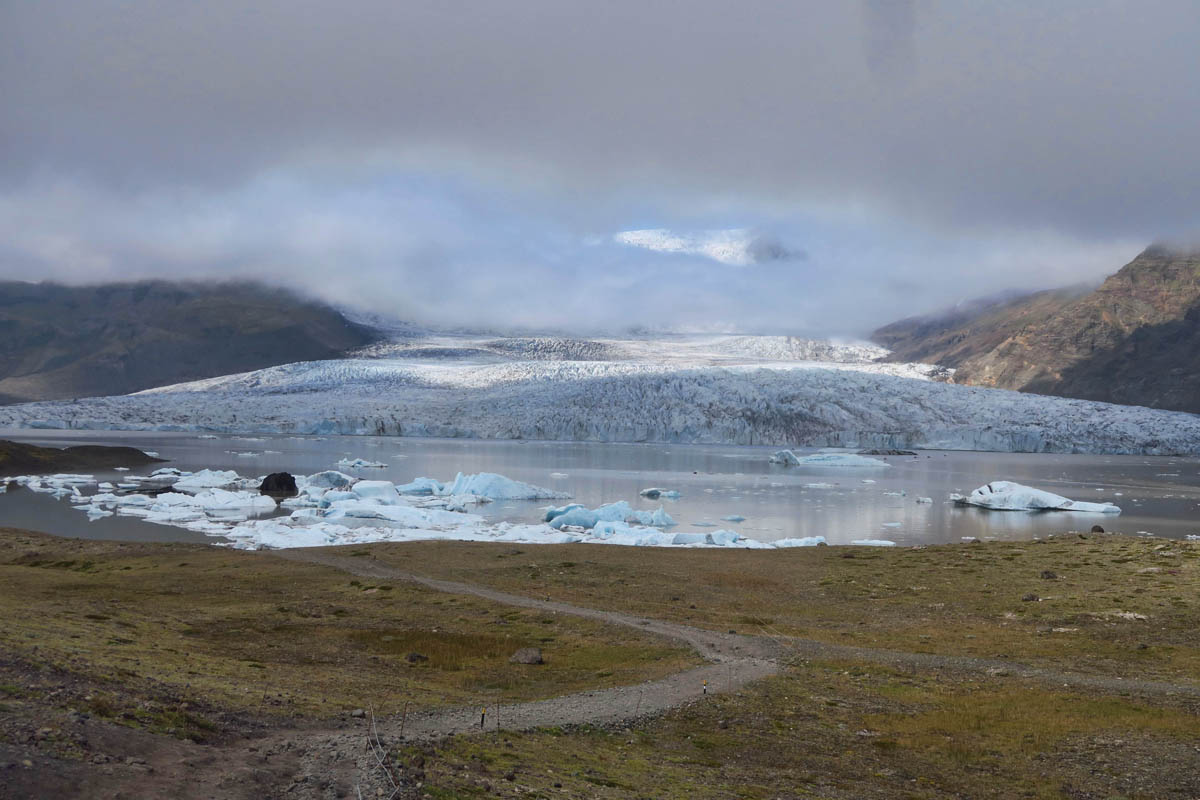 Fjallsárlón lagoon offers a more intimate experience because it is smaller, allowing the small boat tours to get closer to the face of the glacier. 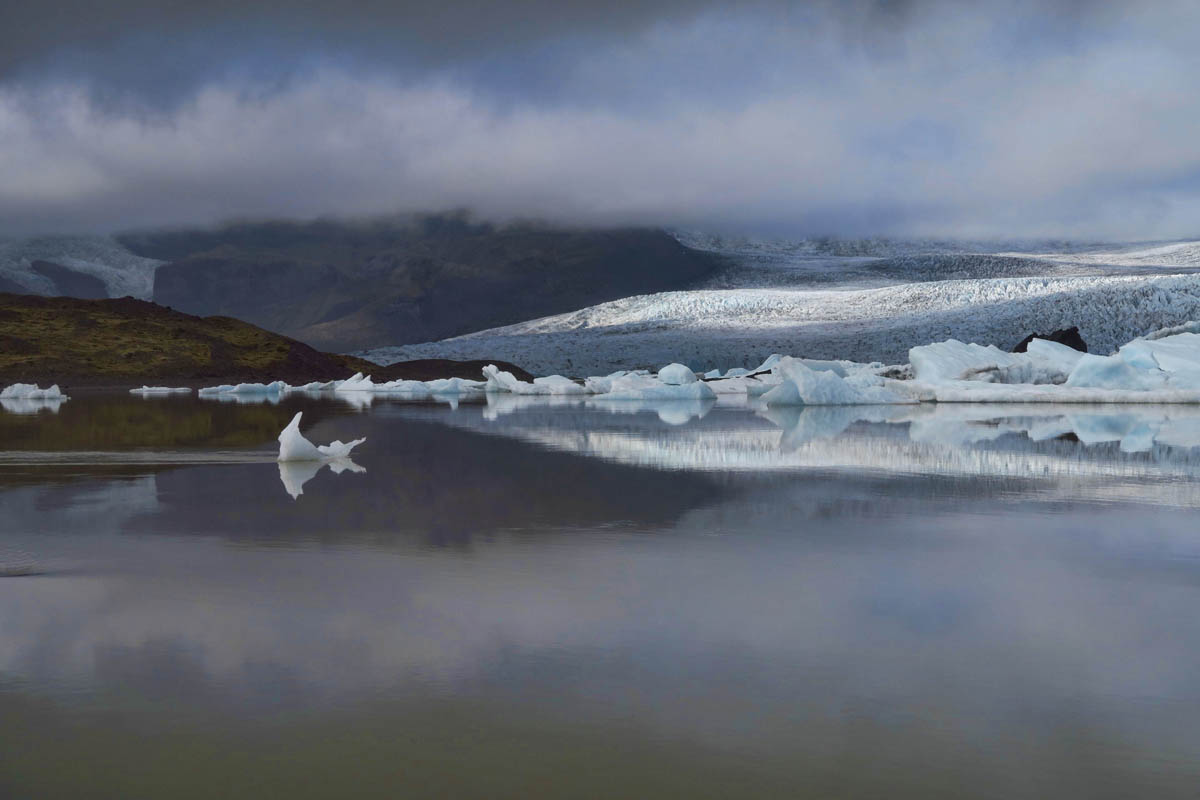 Though the water in Fjallsárlón is muddier and missing that brilliant glacial blue, it is still serenely beautiful. 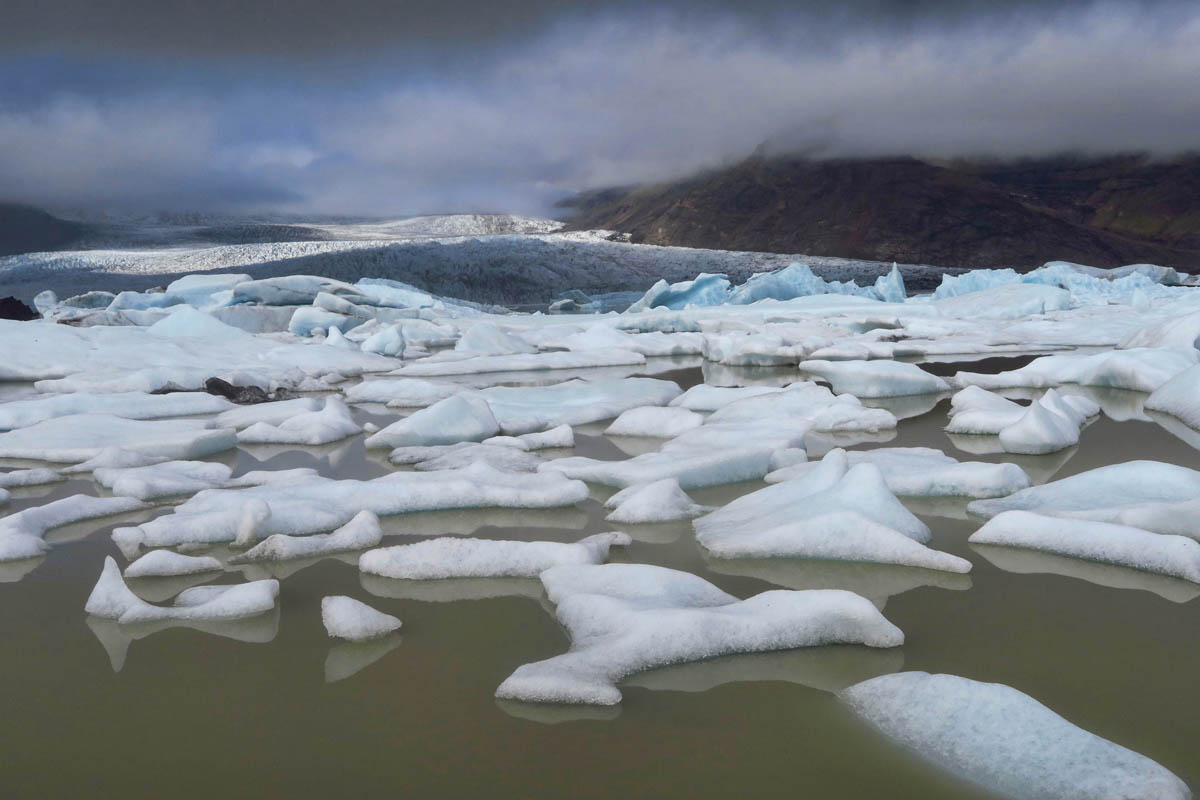 Since there is no outlet to the sea, there are more icebergs in this lagoon.

The third glacier I visited, also right off the Ring Road (Route 1) was Sólheimajökull. It is an outlet glacier of the Mýrdalsjökull icecap, Iceland’s fourth largest glacier. I chose to visit this spot because it’s easy to get close to the face of the glacier without requiring an expensive boat ride. There is also a very small ice cave and arches that can be reached without specialized equipment like crampons or a guide.

Sólheimajökull appears to be so dirty because it lies in between two volcanoes, one of which is Eyjafjallajökull. If that name looks familiar, it’s because this is the volcano that erupted for 14 months back in 2010 when its drifting ash caused flights to be cancelled all across Europe. The black coating on the surface of the glacier is ash from that eruption. 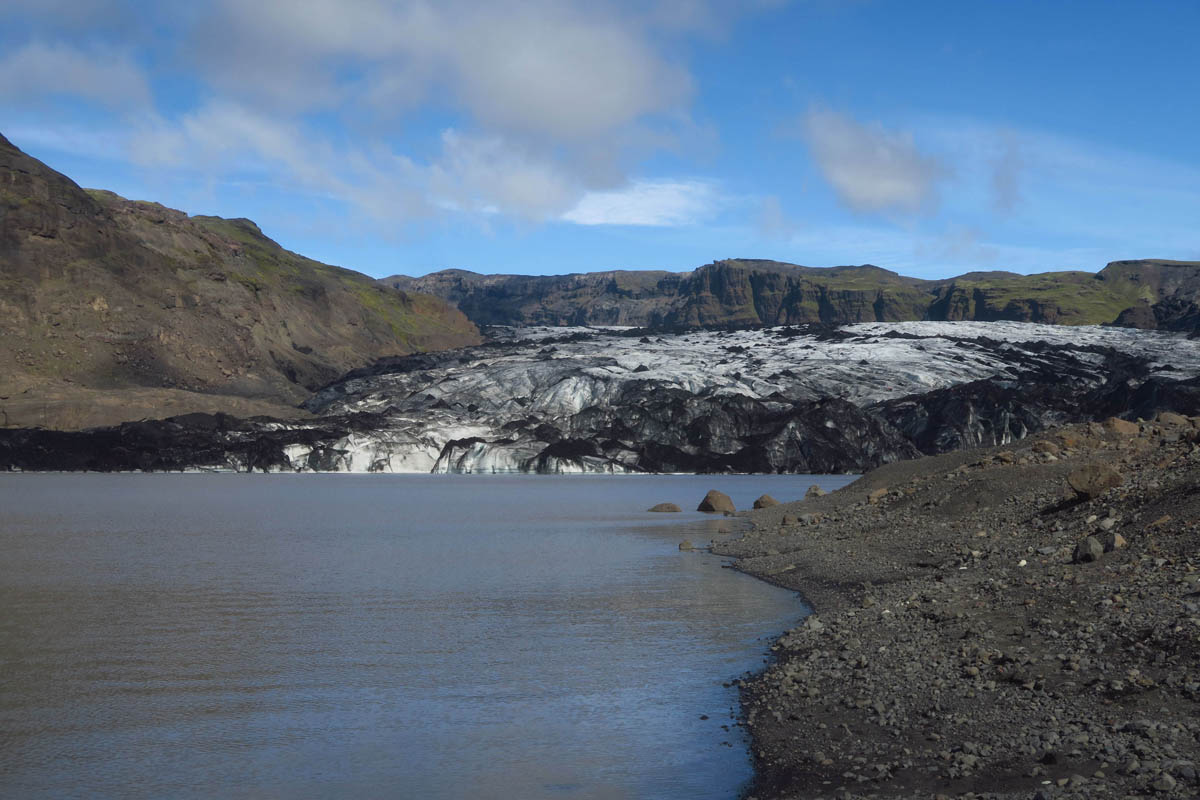 Sólheimajökull is only a couple of miles off the Ring Road, where you can park and hike to the face of the glacier. 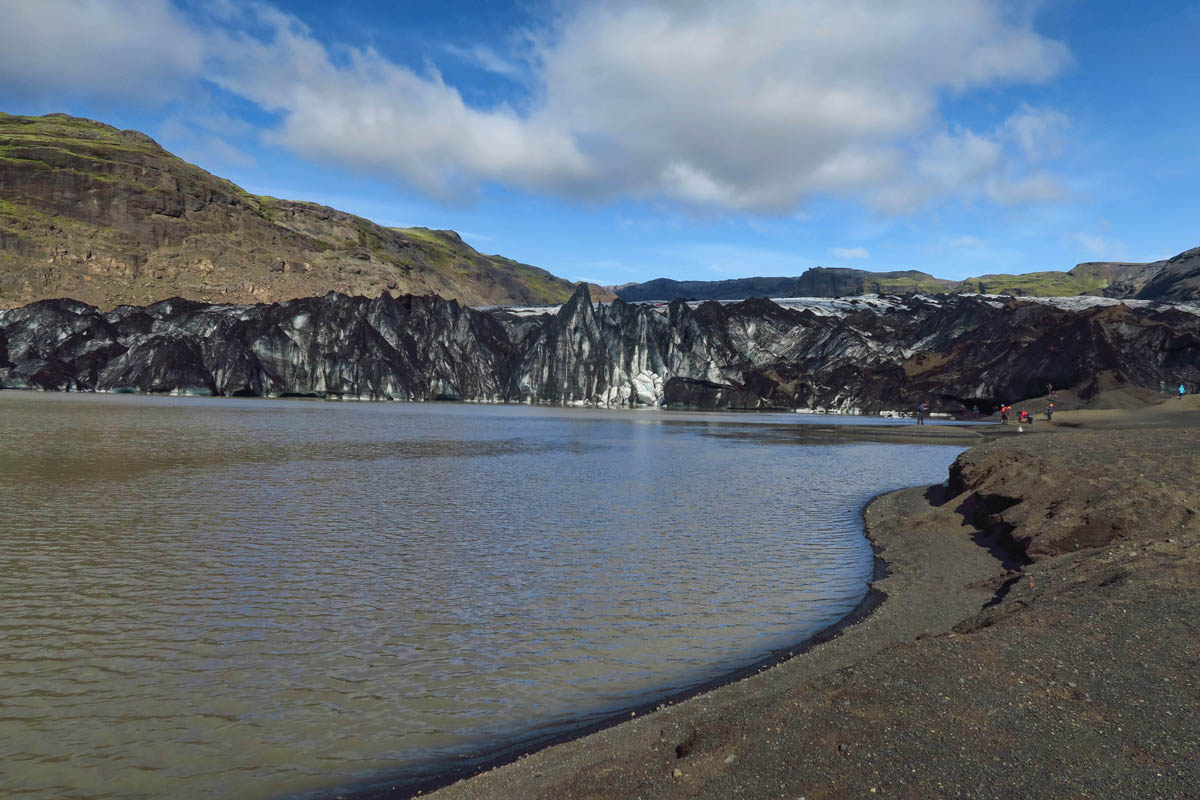 There is a walking path to a viewing platform higher up, but instead, take the path by the tall antenna that drops down and follows the lake to the face of the glacier. 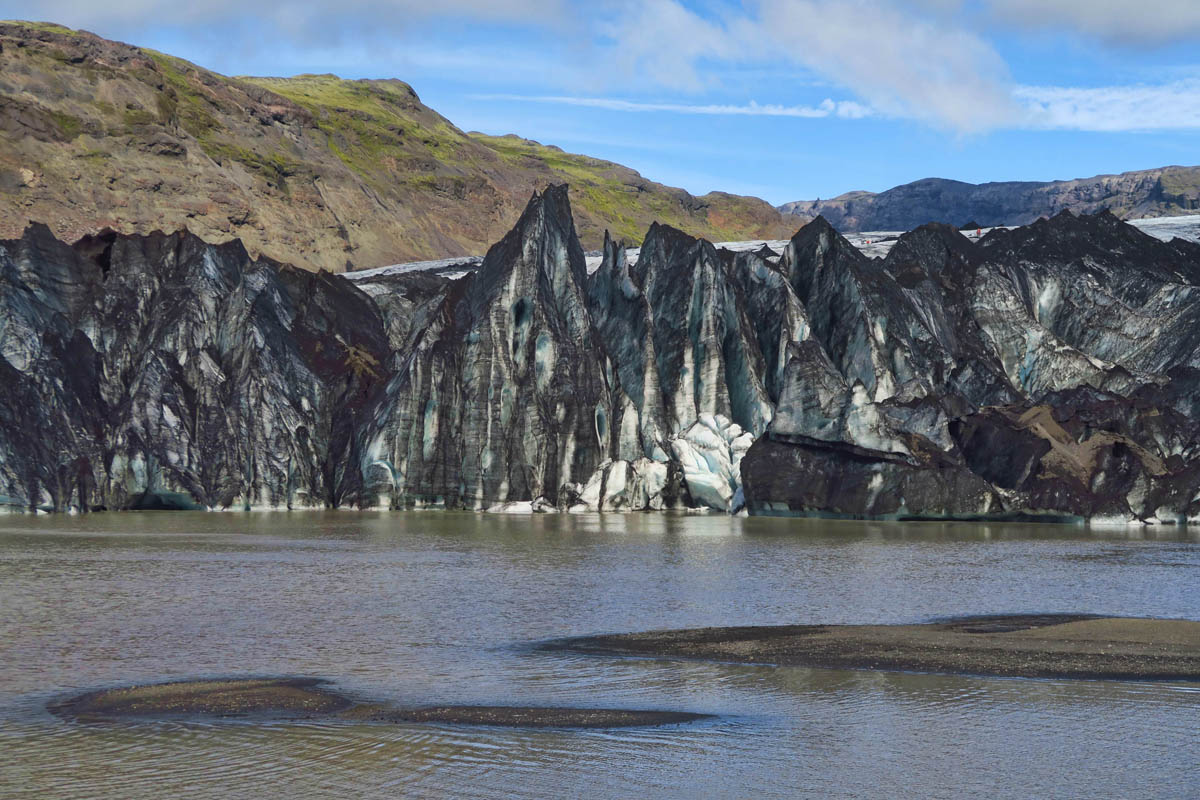 The ice is so predominantly black because it was covered in ice from the Eyjafjallajökull volcano which erupted for 14 months back in 2010. 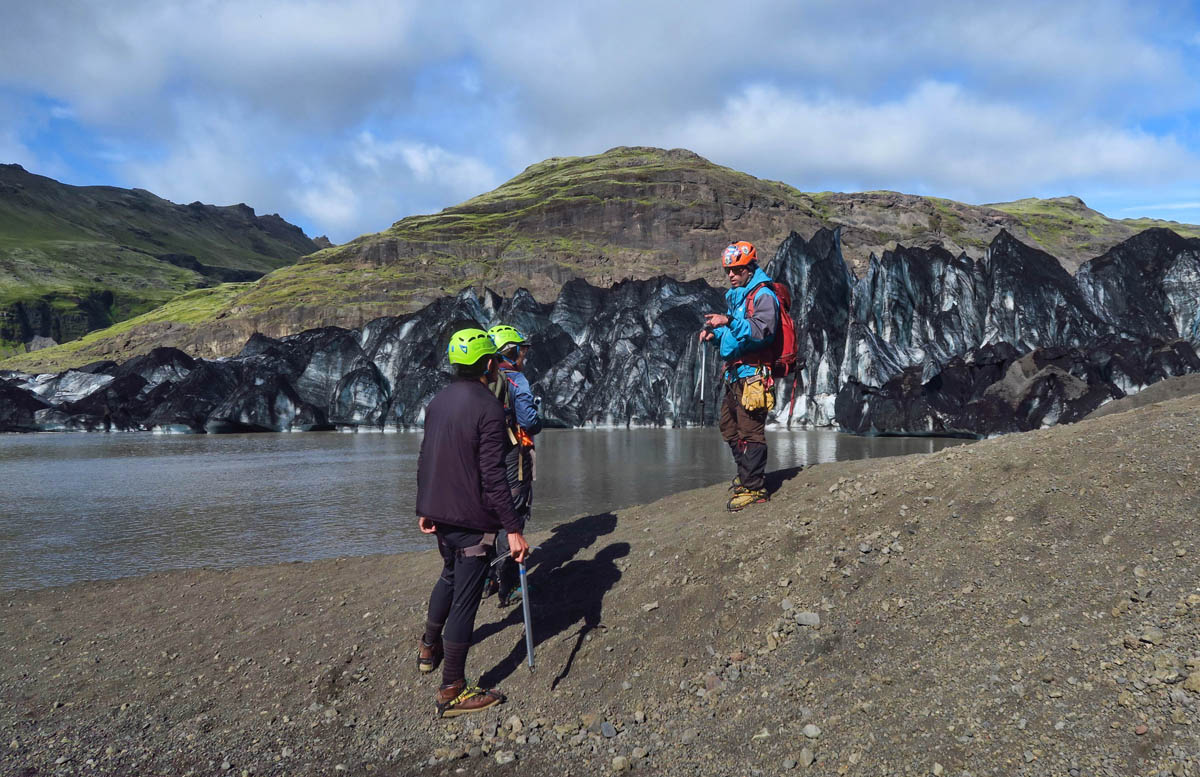 At most all the glaciers, it is possible to do a “glacier walk” with a guide. 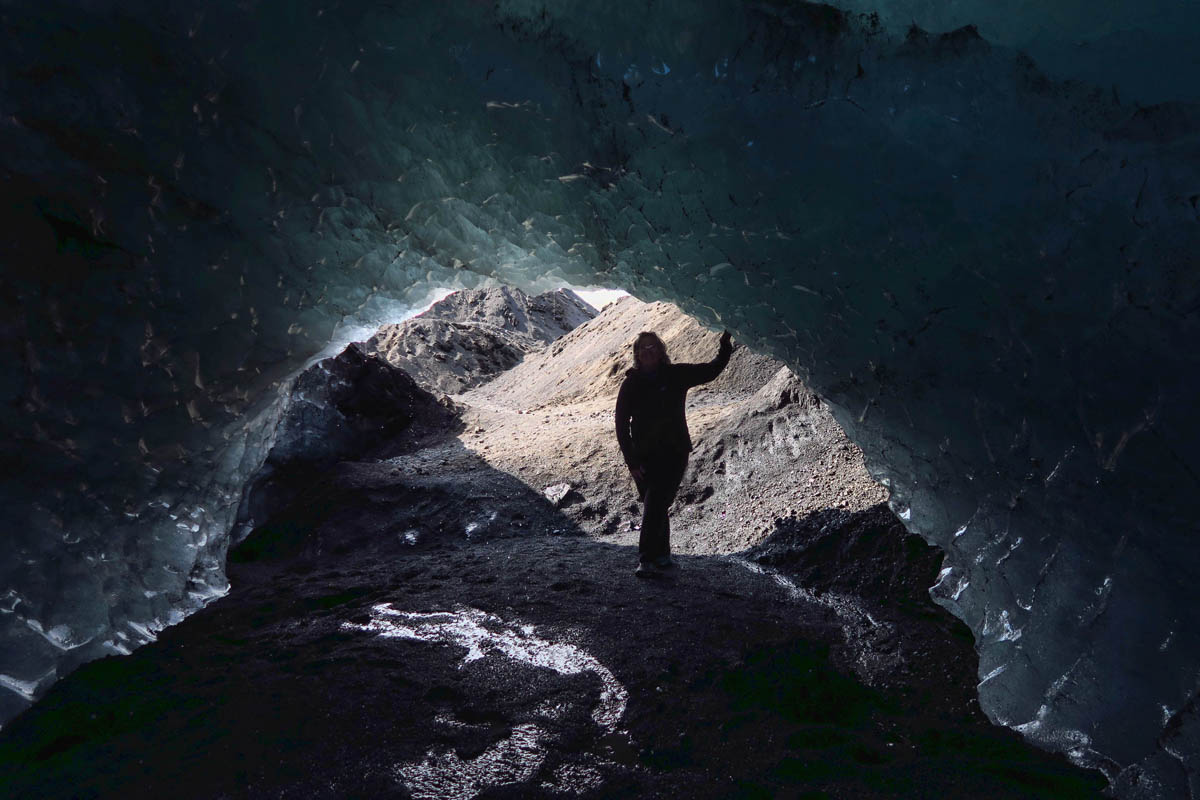 But here at Sólheimajökull, there are areas where you can walk to on your own, without equipment or a guide. 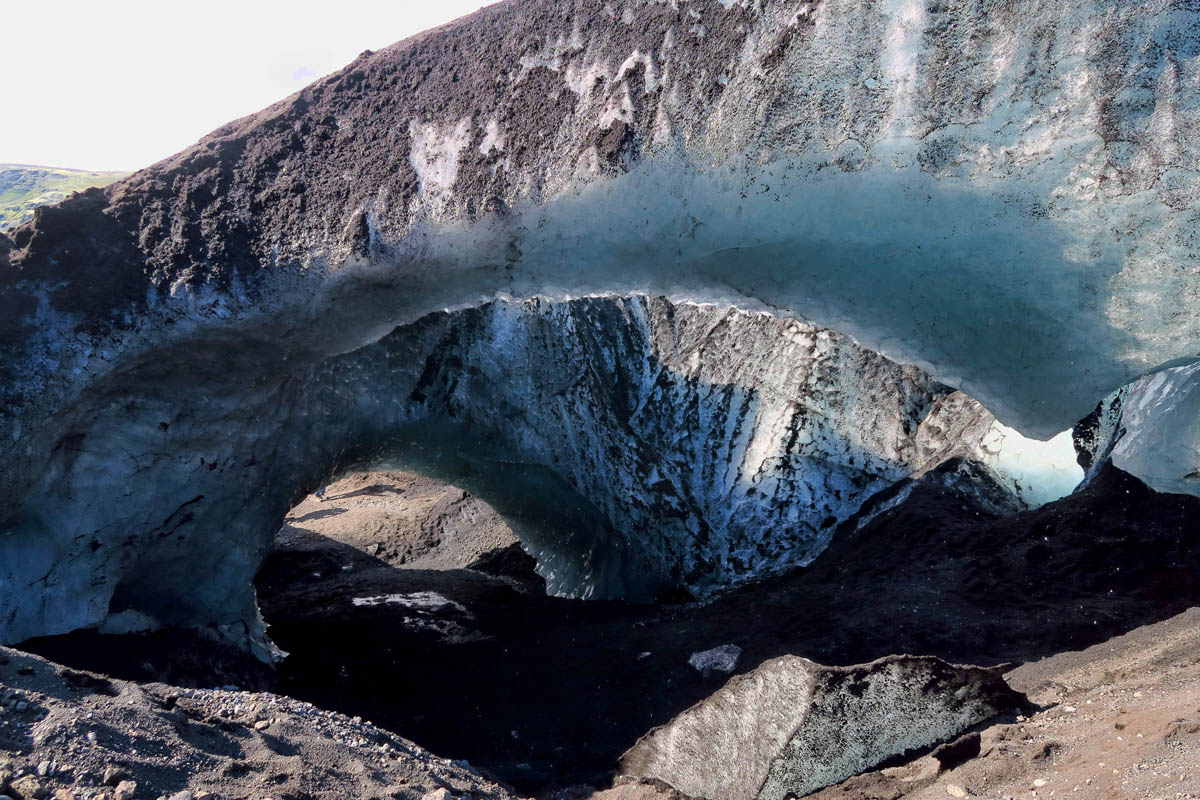 Just be sure to watch where you walk, and don’t tarry too long!

There is a lot of information displayed on the kiosks at the glaciers warning of the effects of climate change. The glaciers are melting rapidly owing to warmer annual temperatures. From 1890 to 1998, the glacier retreated 3.8km (2.4 miles.) Jökulsárlón lagoon alone has increased four fold since the seventies. It is believed that many of the country’s glaciers will become extinct within the next century. Better go now! 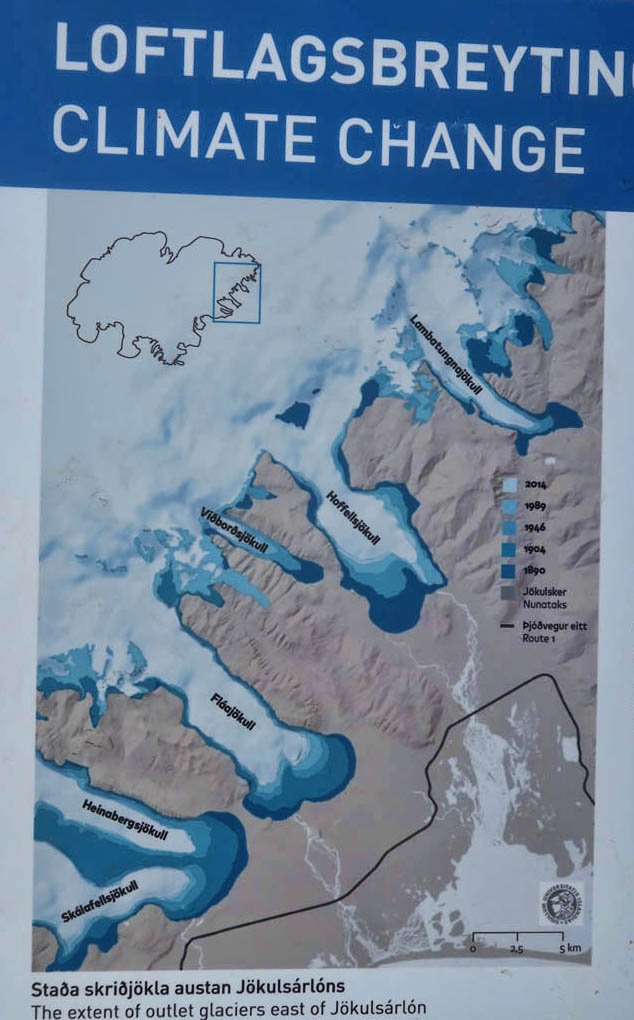 Several kiosks along the way show results of the retreating glaciers due to climate change. 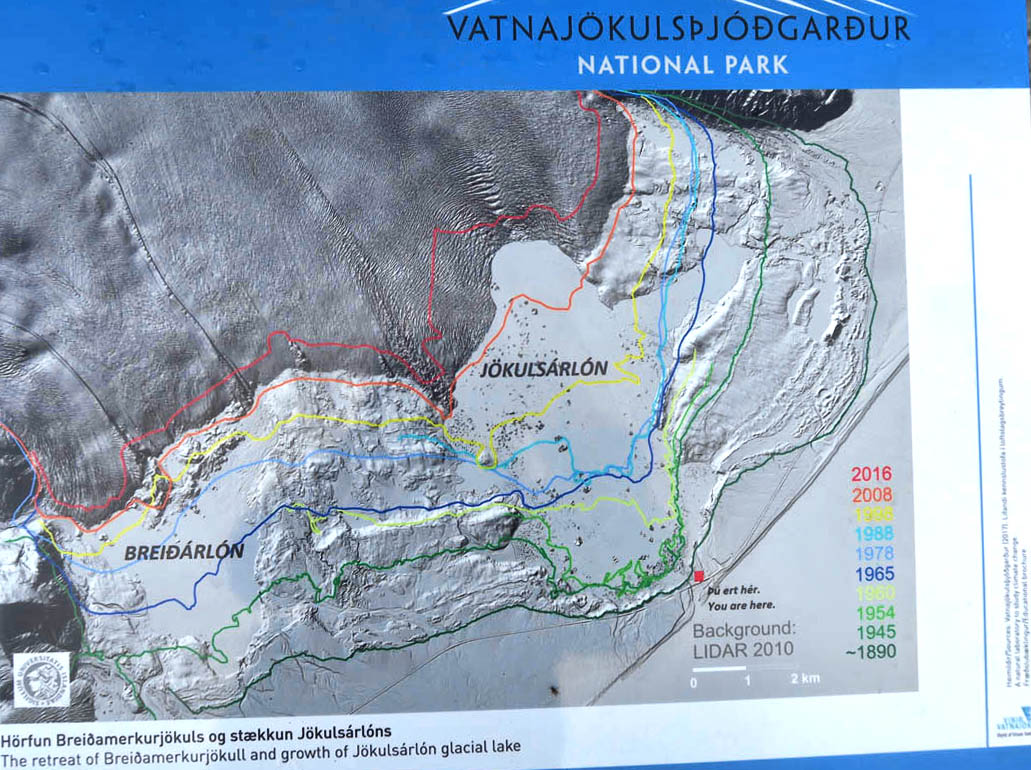 This chart uses colored lines to show the retreat of the glacier and the growth of the lagoon, from before 1890 to 2016. The red line is 2016, and the red dot is the “You are Here” showing the breadth of the lagoon since the beginning of the 20th century.

Camping along this section:  Vik Campsite