Picturing the “clock face” once again, we are now at a solid six o’clock, keeping in mind the starting point of Reykjavik was at around eight o’clock. Almost full circle.

When trying to decide on which direction to circle the island, it was a toss-up. If I went clockwise, I could cover the northern regions before it started getting colder. And there was a chance (or so I thought) that waiting until the end of August when vacation season was winding down would mean lighter crowds in the more popular southern region. Thus, my decision to circumnavigate the island clockwise. Given the heavy concentration of attractions along the southern stretch, I would also be saving the best for last.

However, the downside of traveling in this direction was feeling a bit less enamored over having to share these attractions with the crowds. Getting photos without selfie-posers was near impossible. While there were tour buses up north doing the “Diamond Circle,” there didn’t seem to be the vast numbers of independent travelers I encountered along the southern section. Being only a couple of hours from Reykjavik, the southern coast gets the tour buses, but also gets the day trippers, and those who only have time for a shorter distance itinerary.

From reports on TripAdvisor, it seemed September was an even busier travel month than August, as more and more COVID restrictions were lifted. So much for my theory that it would be less crowded later in the season.

The frequency of attractions along the southern stop was also a bit tiring, as I felt like I was in and out of the camper van all day, with no long stretches of time to relax behind the wheel. So it was a trade-off. A greater concentration of attractions brings a greater concentration of visitors. So which was better? Saving the most popular attractions until last? Or getting the more crowded section out of the way first so as to end on a note of solitude? I guess it all depends on where one places their priorities. The best advice I can offer when making this decision is that either direction you go, “pace yourself!”

Here are some of my favorite memories from the southern coast…. 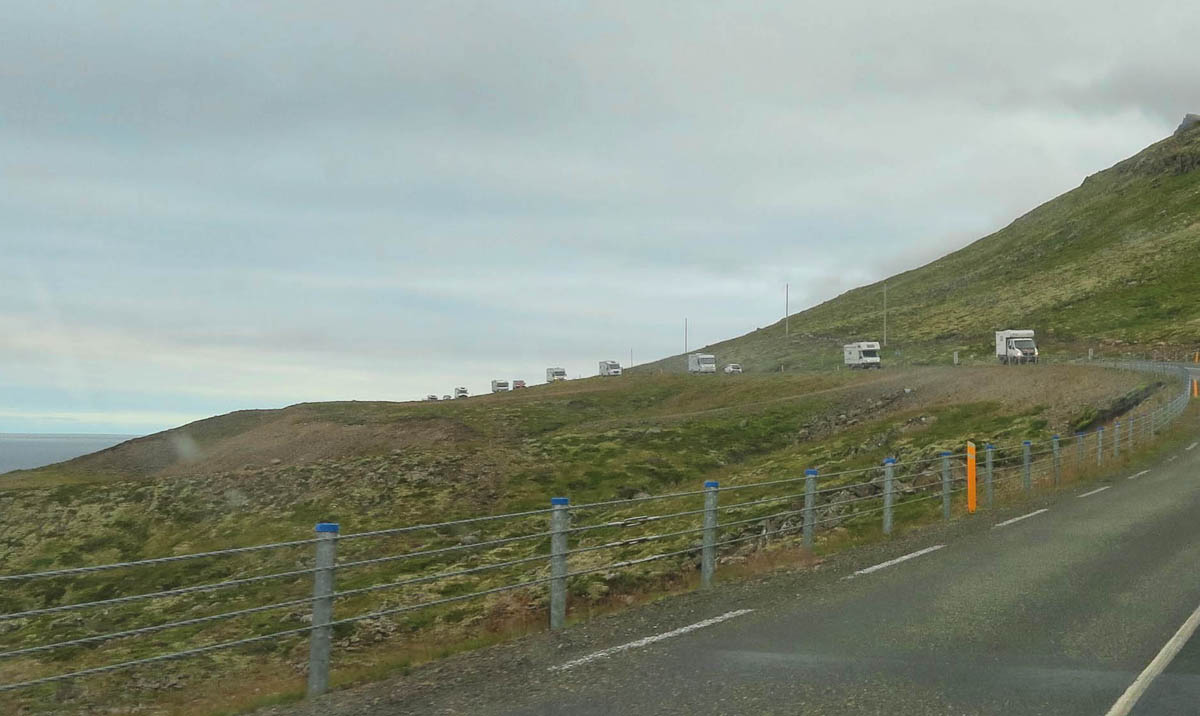 While I wasn’t fast enough with the camera, there were SEVENTEEN RVs in this caravan. They must all be extroverts. 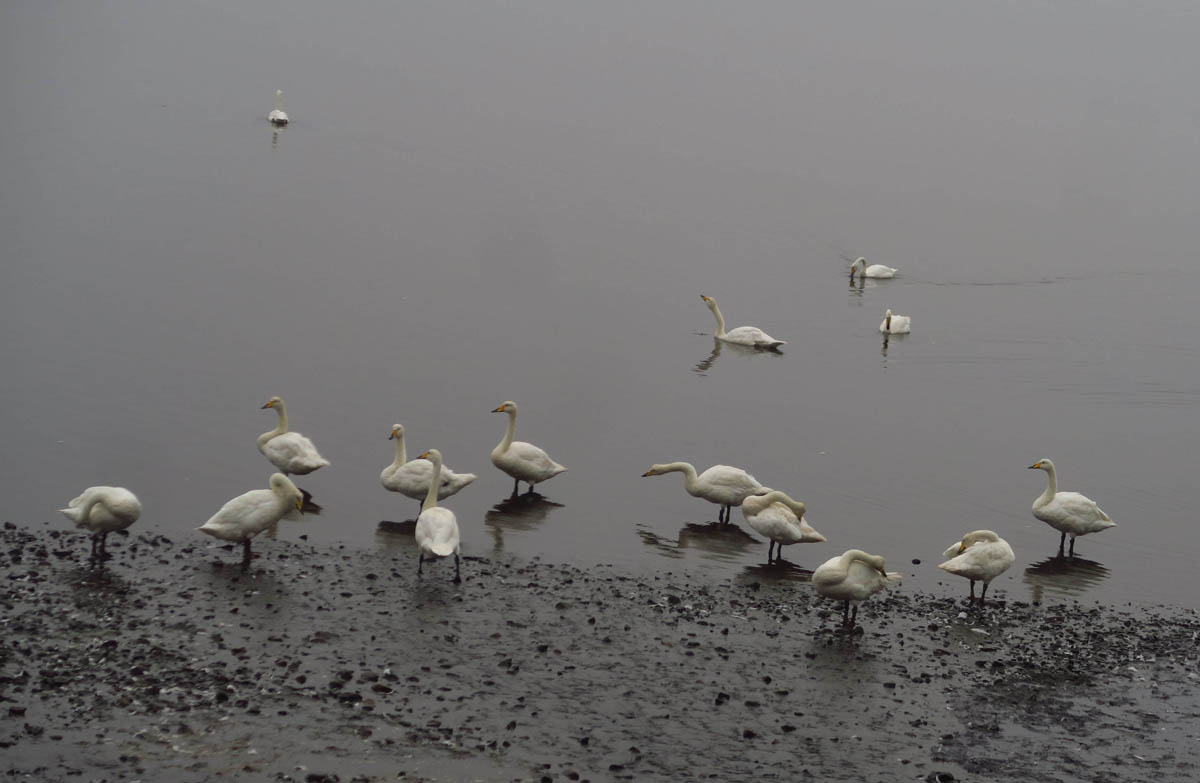 Stopping along the way at one of the many picnic spots along the Ring Road, I find a crowd of a different sort. 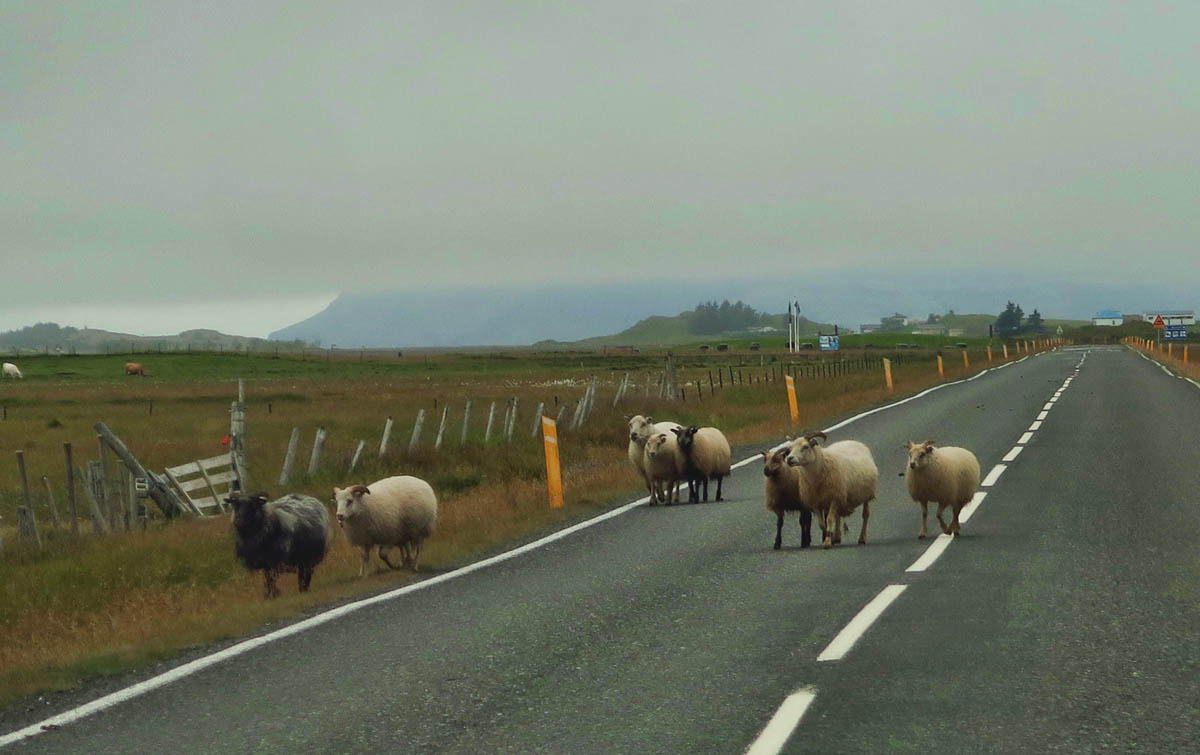 Iceland Stand-off is a regular occurrence. 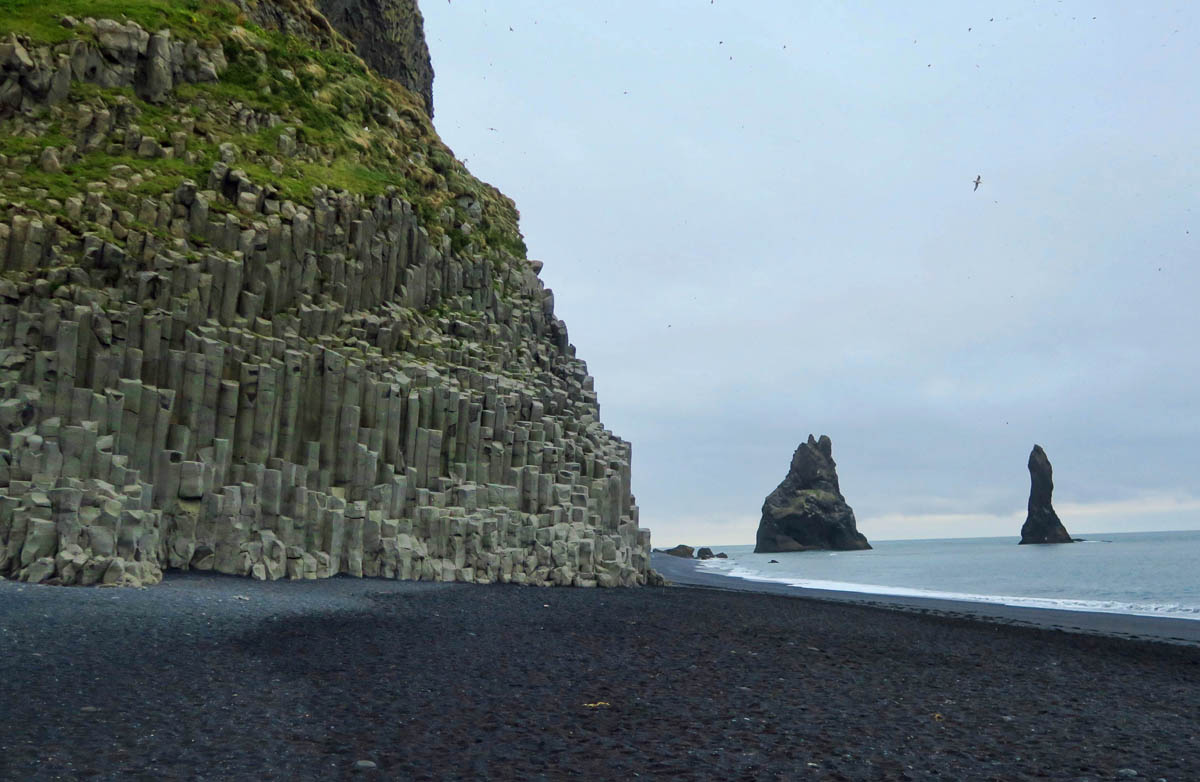 One of the most popular stops along Iceland’s south coast is Reynisfjara black sand beach. 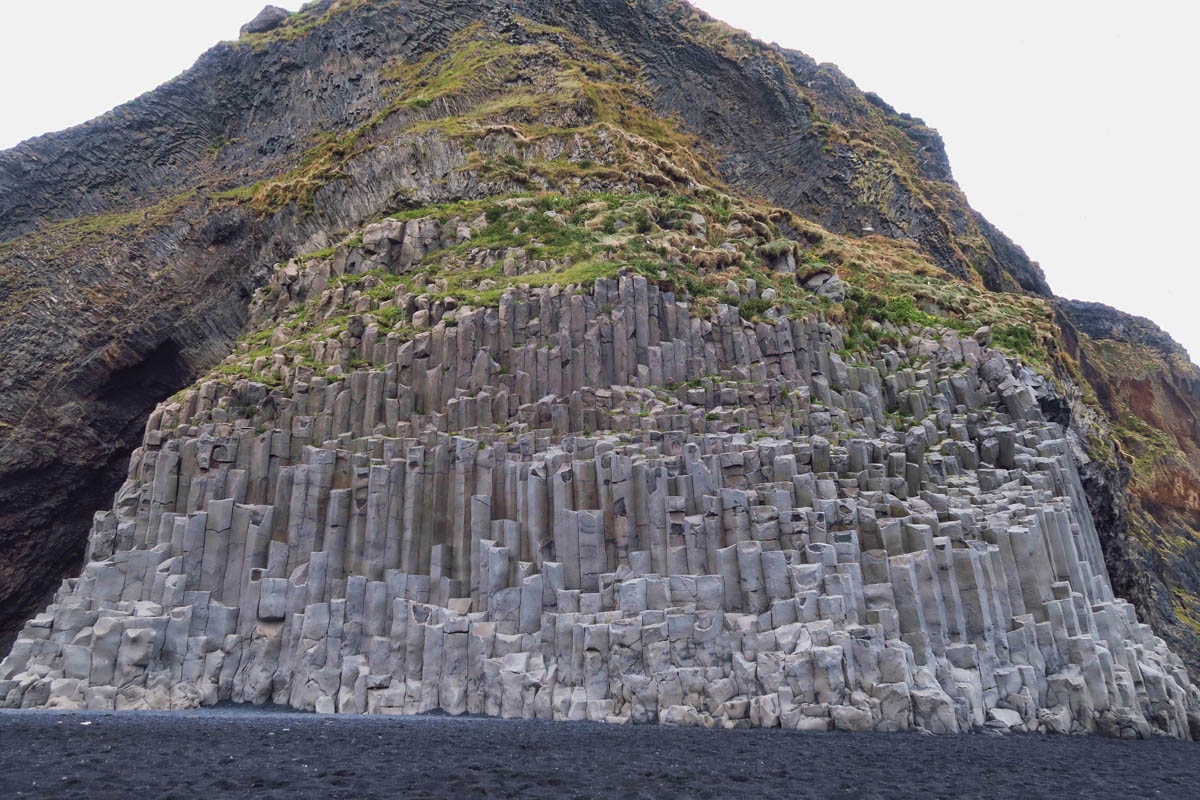 The three aspects that make Reynisfjara so popular are the sea stacks, the black sand, and these massive basalt columns. 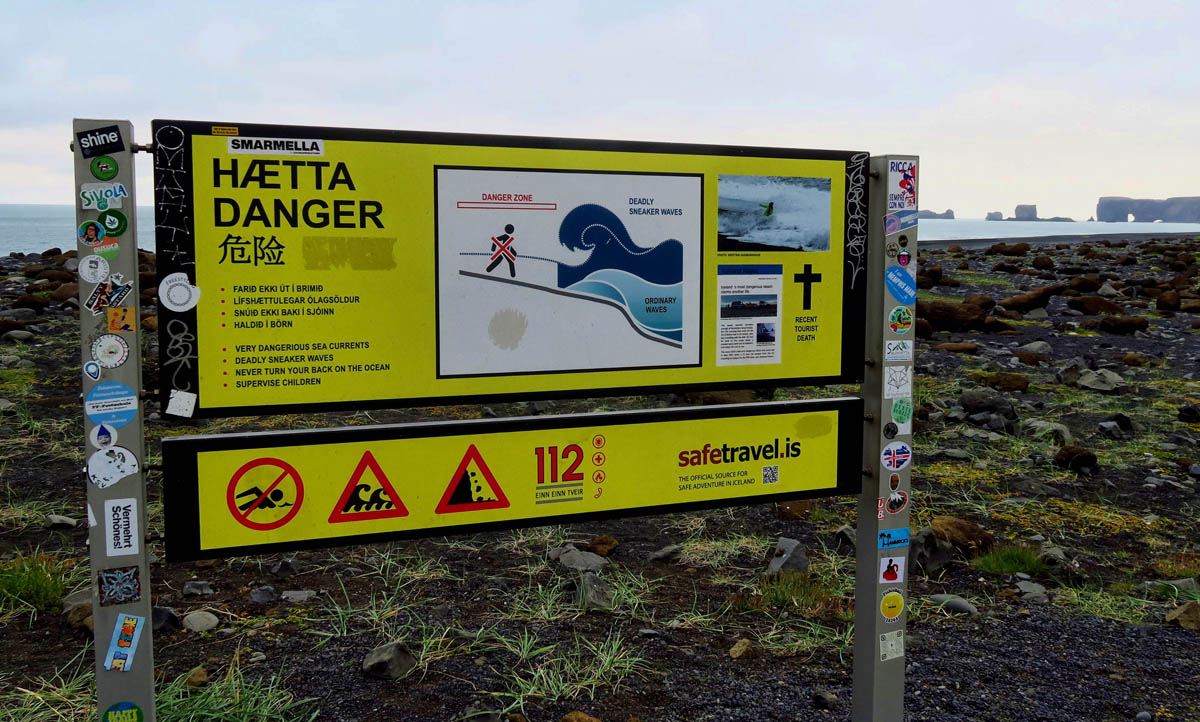 Another thing Reynisfjara is known for is its infamous “sneaker waves.” Lots of videos on youtube show that this warning is to be taken seriously! 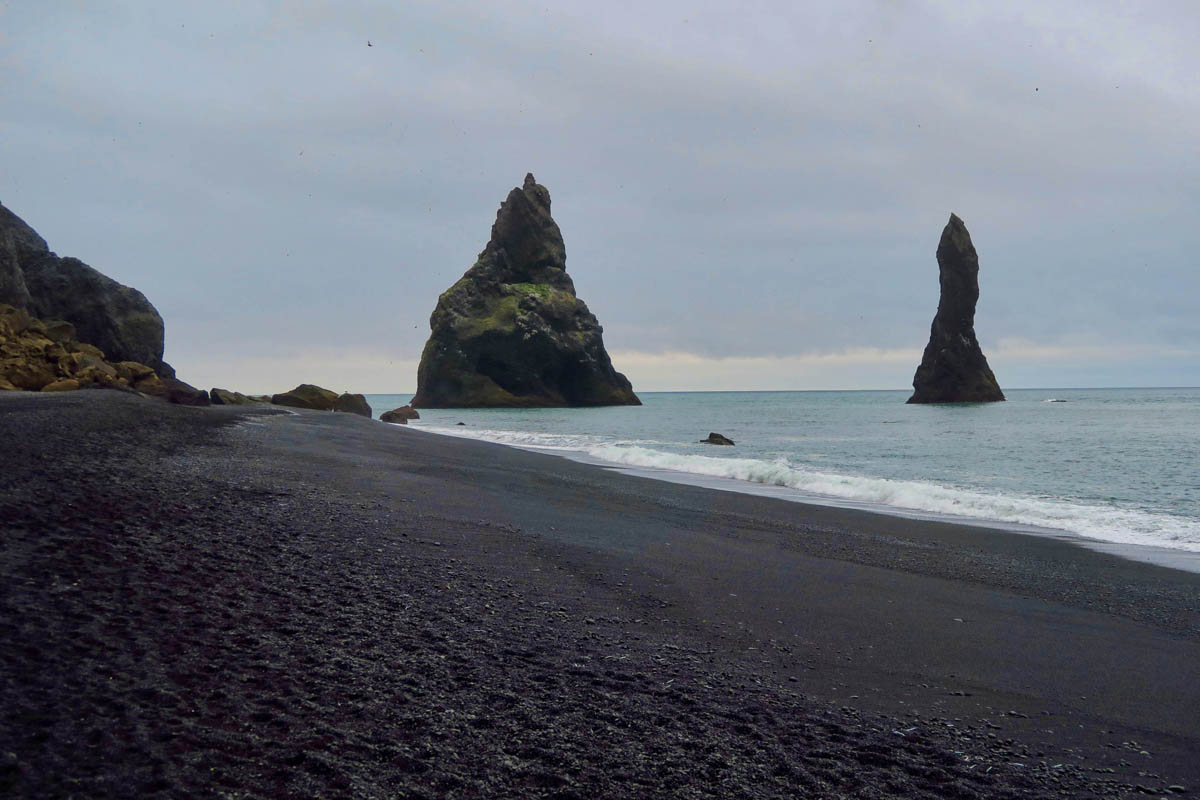 This was another one of my early morning stops. So incredible to have it all to myself! 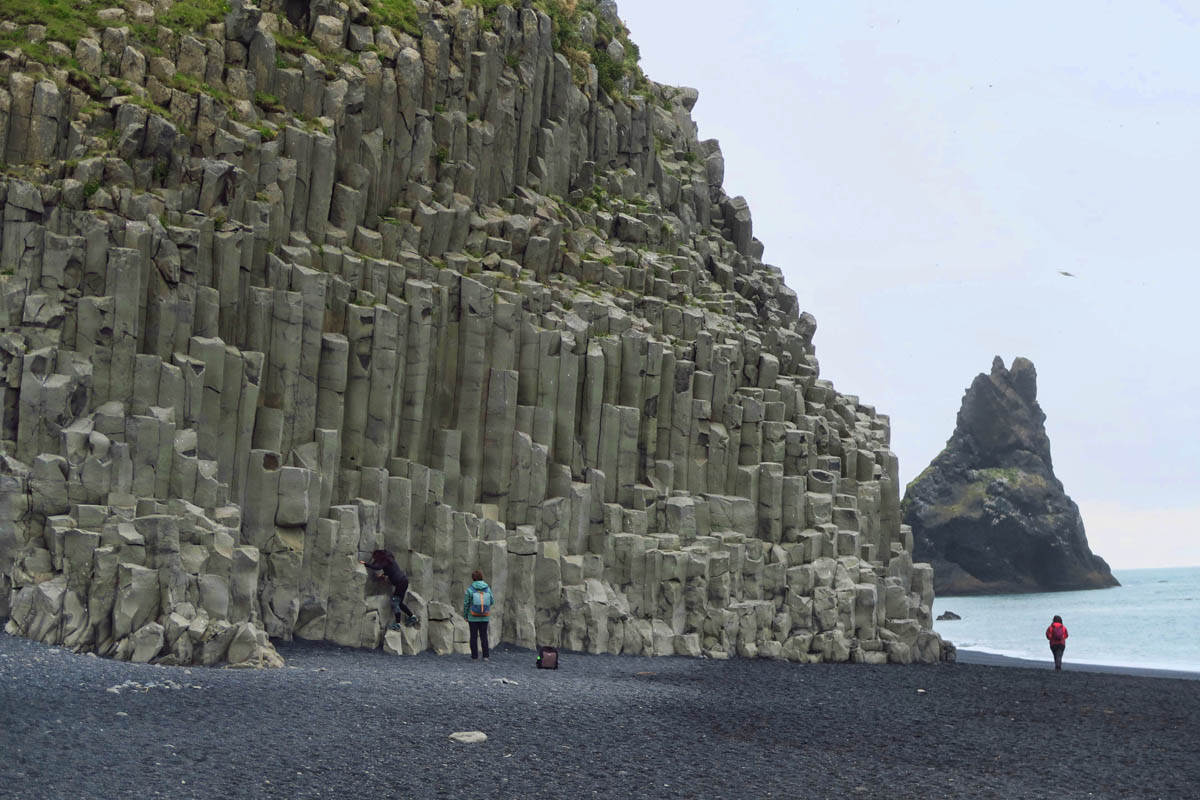 Soon, other visitors show up to give my photo of the basalt columns some scale. 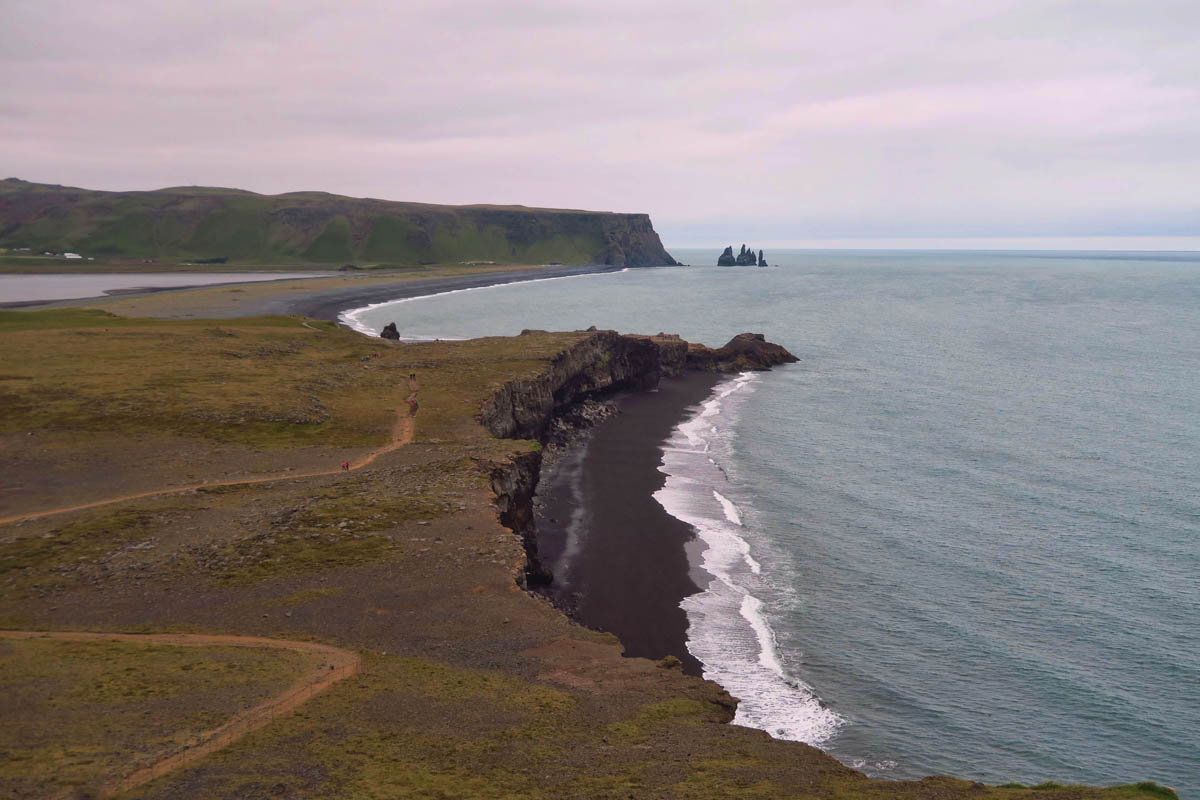 Further south down the beach is the Dyrholaey promontory. 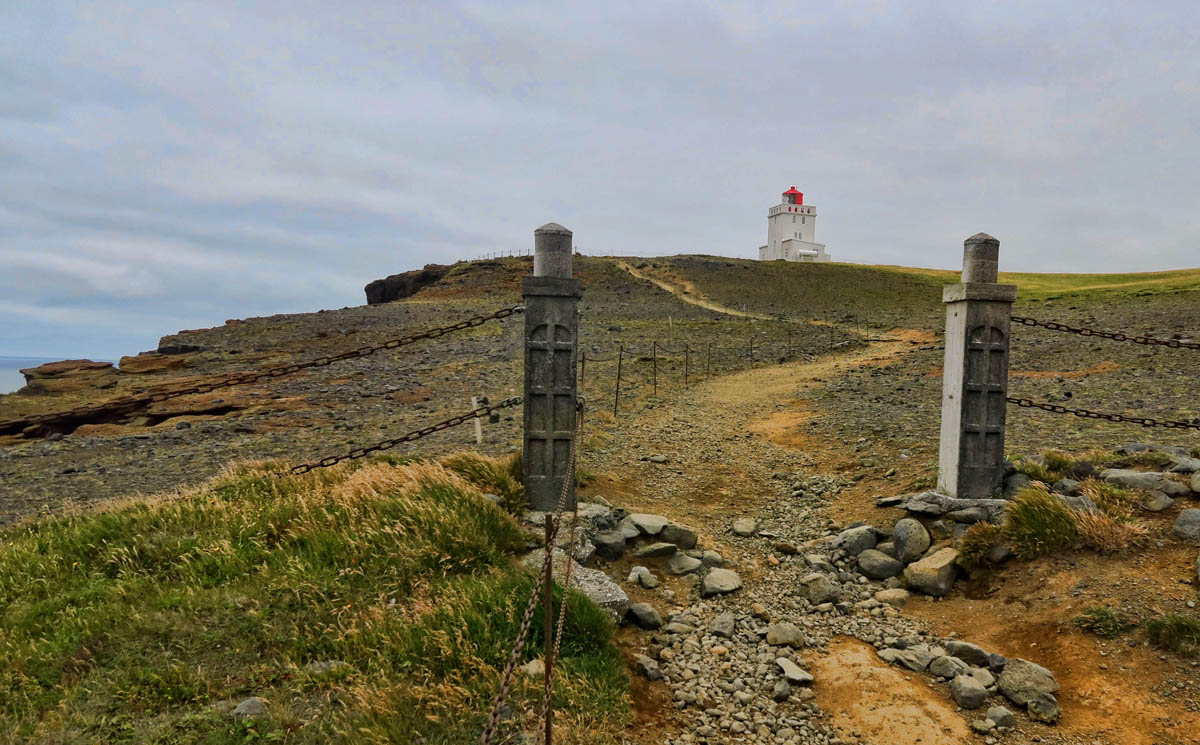 Many climb this path for the Dyrholaey Arch, but I am here for a different reason…the call of the Dyrholaey Lighthouse, of course! 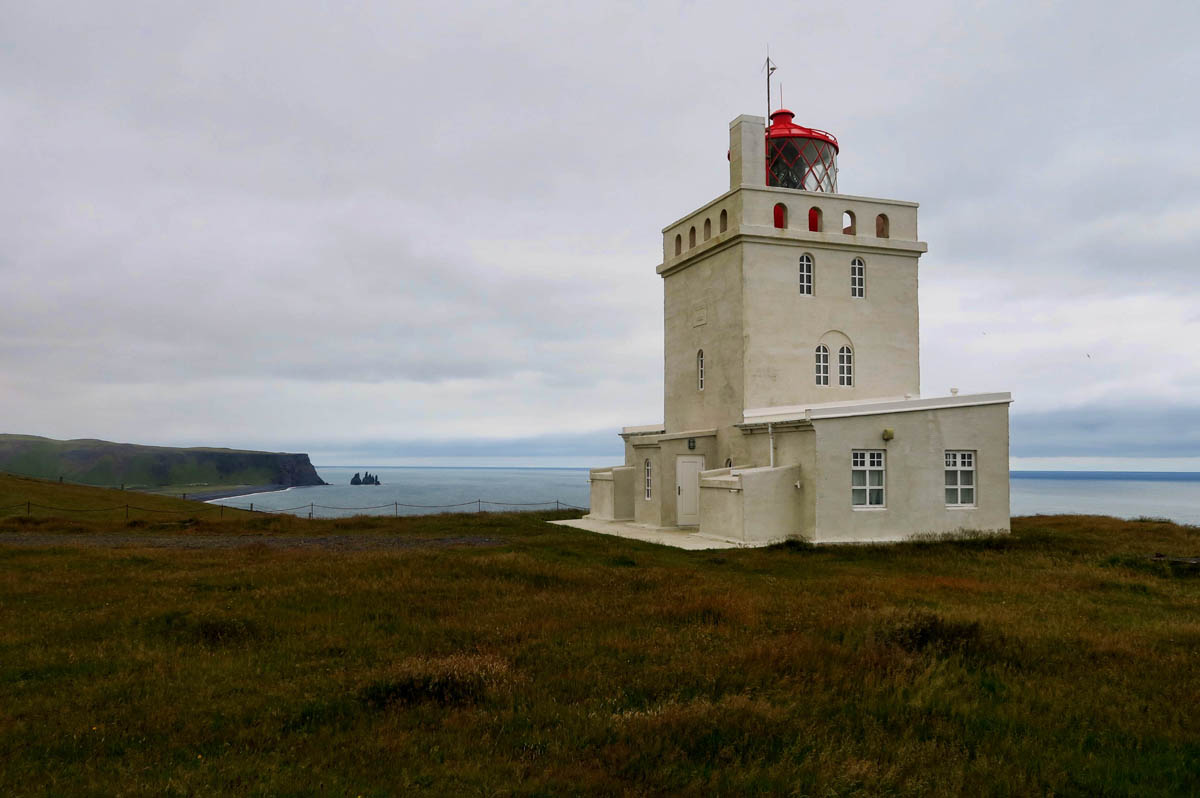 This beautiful structure was built in 1927. So many lighthouses in Iceland are pretty plain, so it’s nice to see this stately beauty! At one time, the keeper’s quarters were for rent as a “boutique hotel,” but it’s closed now. 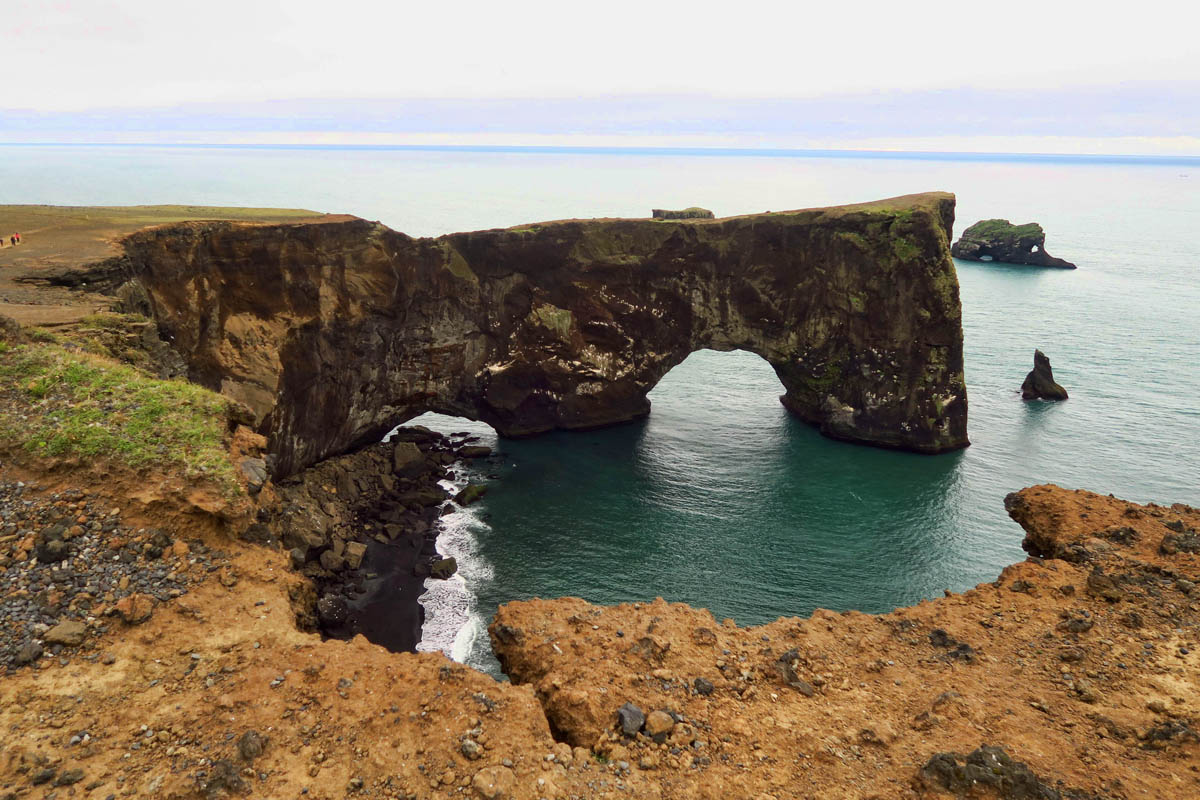 The path up to the lighthouse also offers a beautiful view of Dyrholaey Arch. 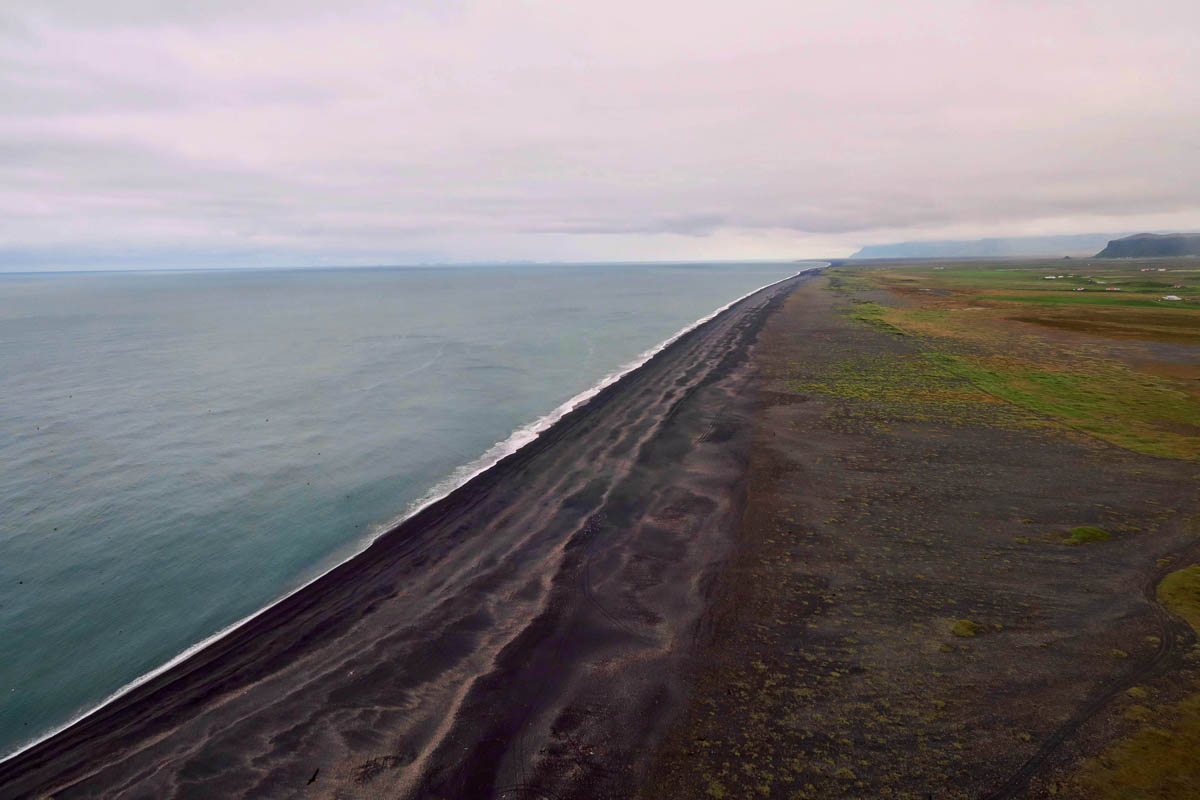 At the top of the promontory, the black sand beach extends almost as far as the eye can see.. 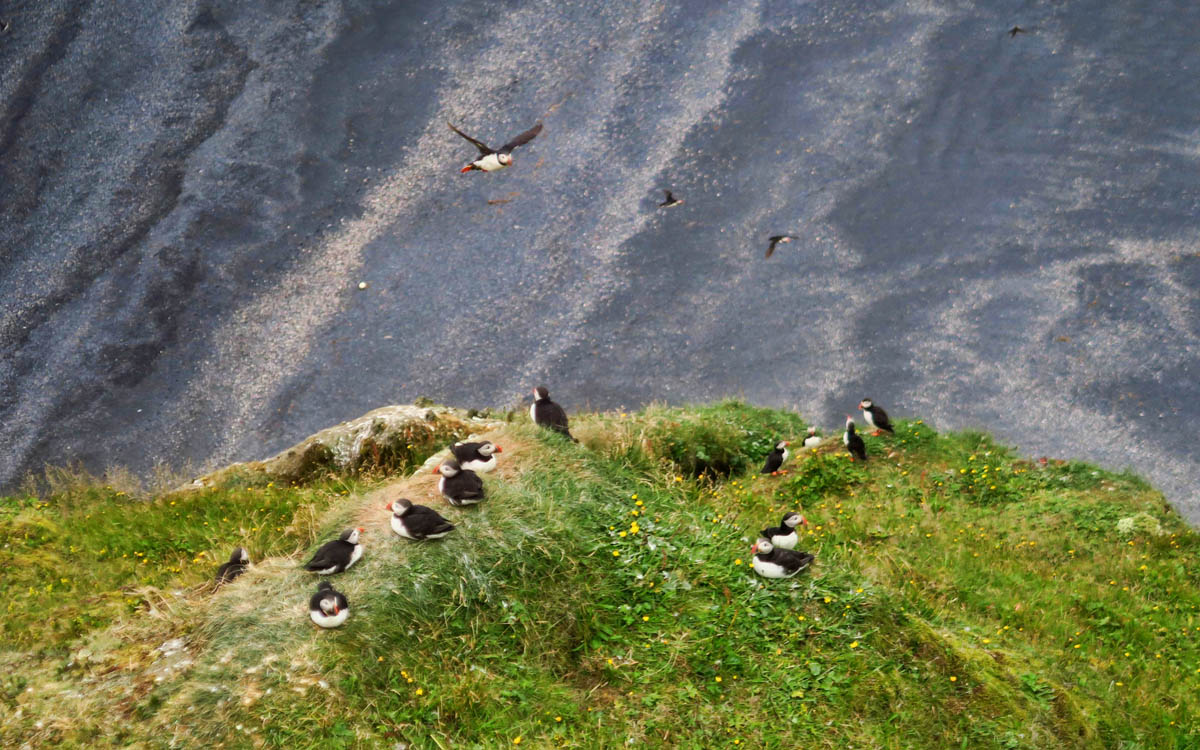 When I look over the edge to take a photo of the black sand beach, I get quite the surprise…PUFFINS! 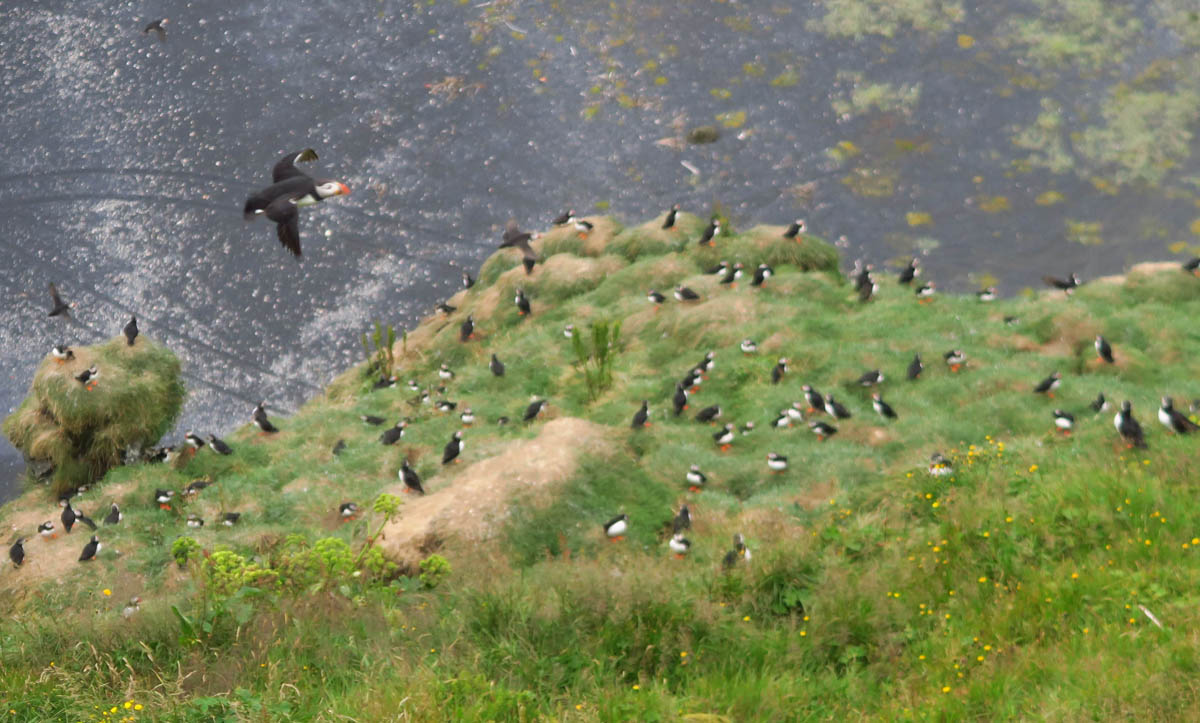 I worked so hard at finding puffins in Newfoundland that I am surprised to find so many of them here! 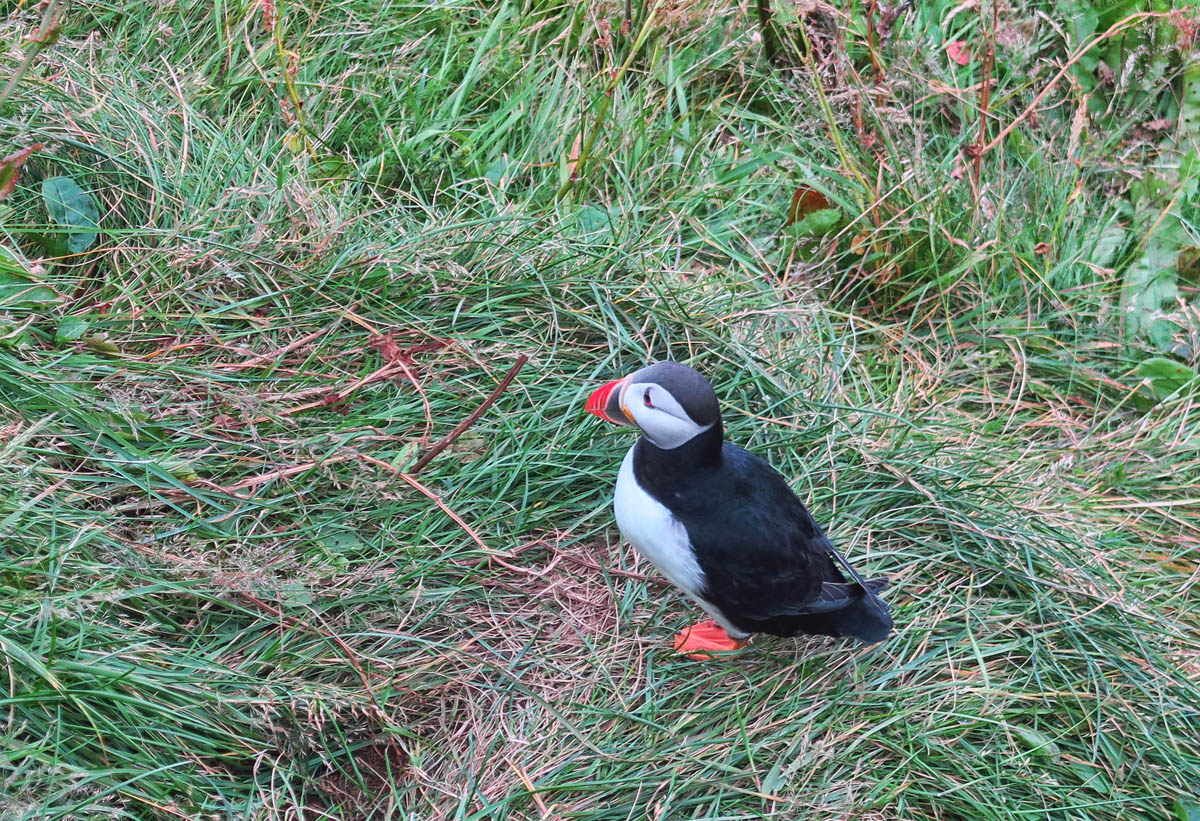 Puffins are sea birds, and typically leave their nesting grounds in mid-August to spend the winter at sea. I was afraid they would all be gone by the time I got here. 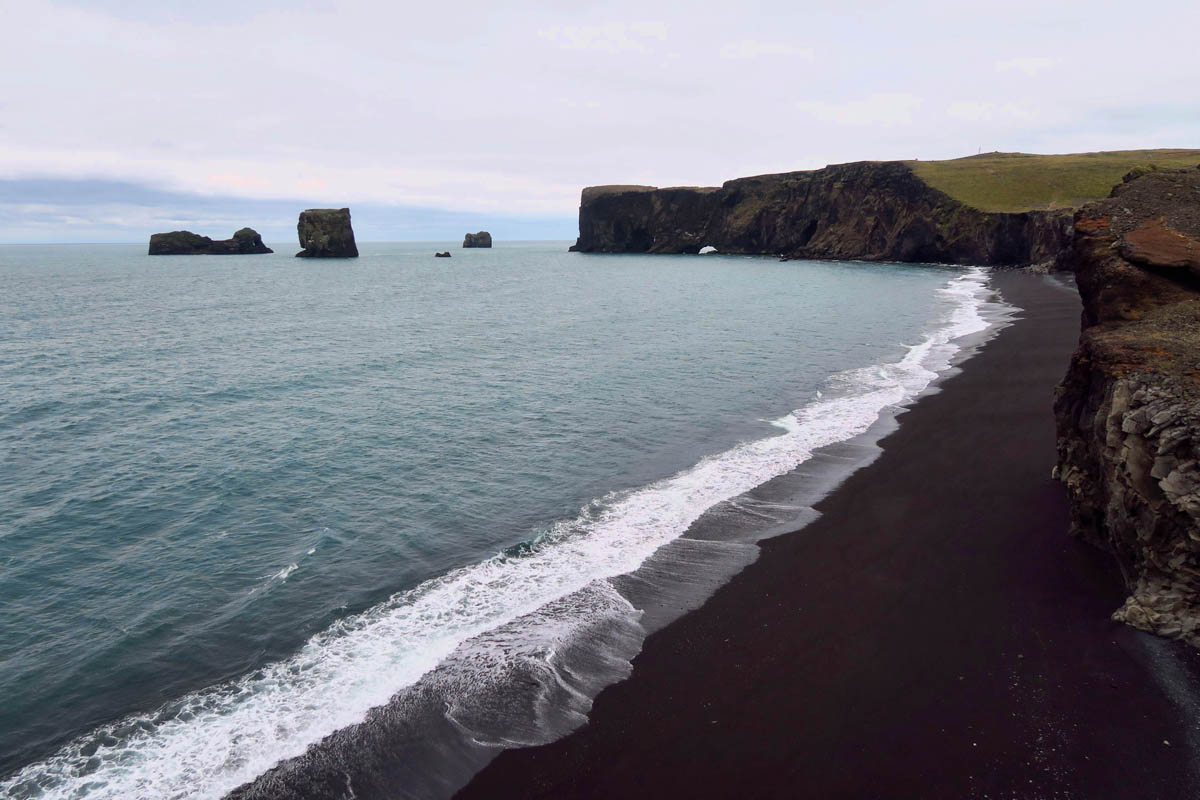 This part of the coastline is beautiful in either direction. To the south, the velvety black sand beaches… 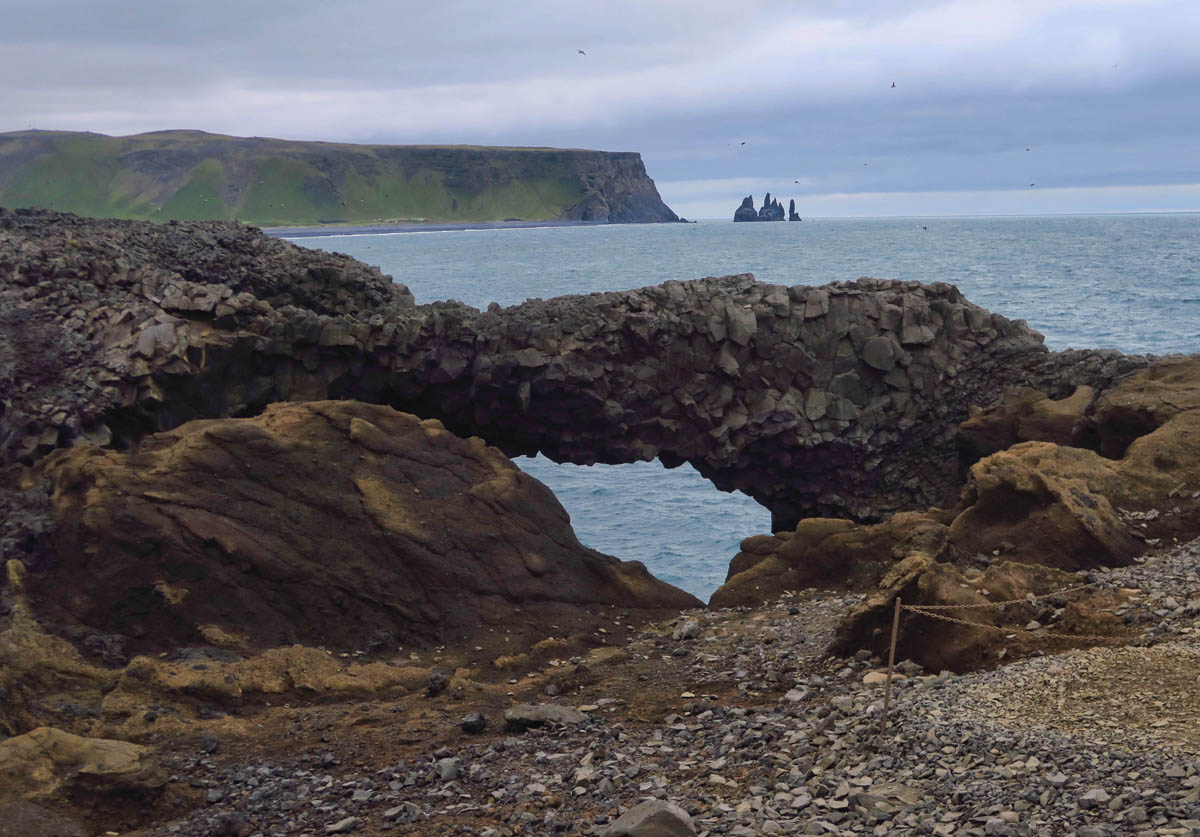 To the north, more sea stacks and arches. 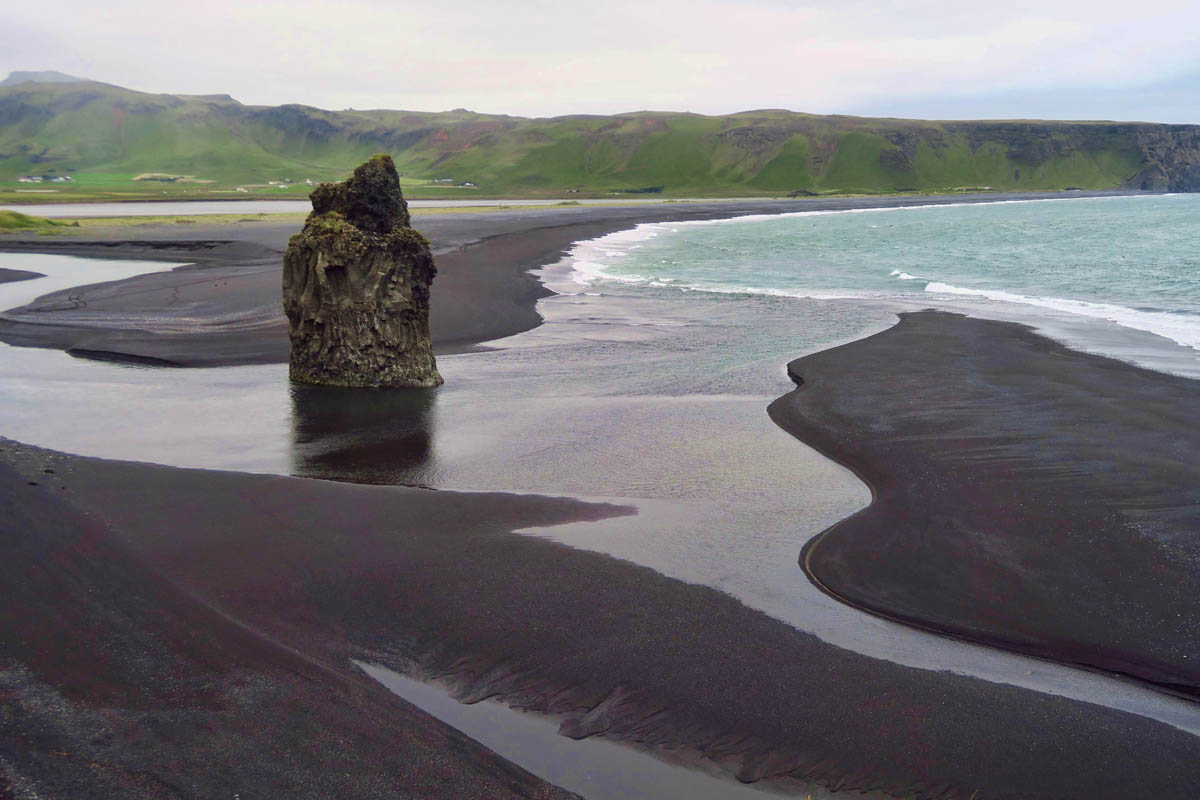 A road is being built to the top of Dyrholaey promontory, however currently the only way to reach the top is to hike it. The hike is worth it for the views! 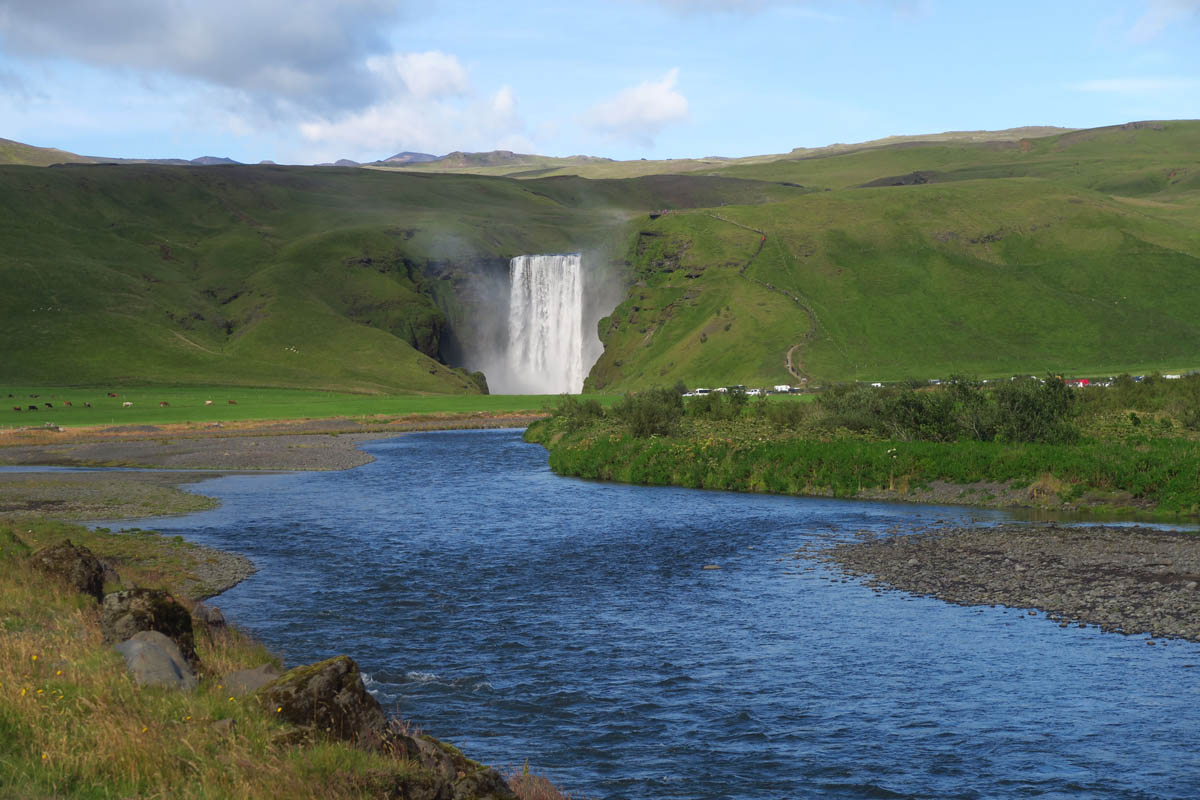 Coming up on Skógafoss, one of Iceland’s best loved waterfalls. At 82 ft wide and 200 ft tall, it’s also one of the biggest. 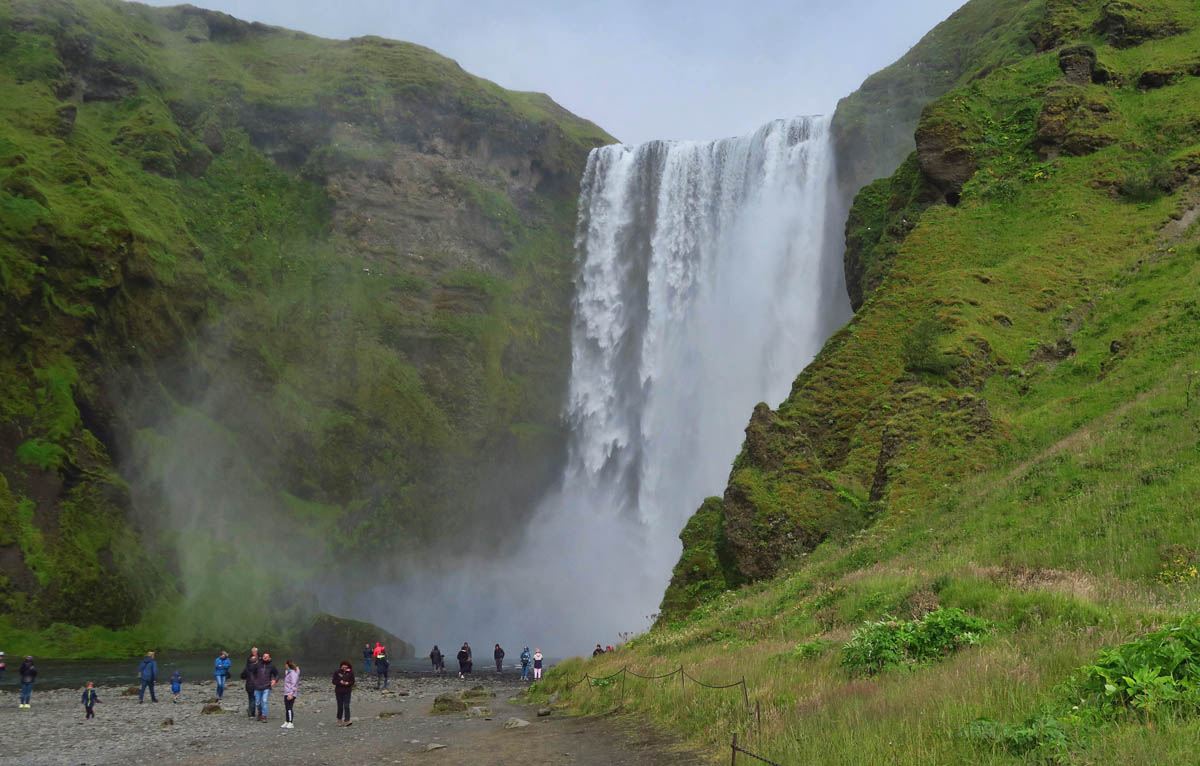 To the right of the falls is a staircase leading to the Fimmvörðuháls hike, better known as “Waterfall Way.” This trail passes 25 waterfalls. (This photo is for “Thirsty Souls Jim” as proof that yes, there are a few crowds!) 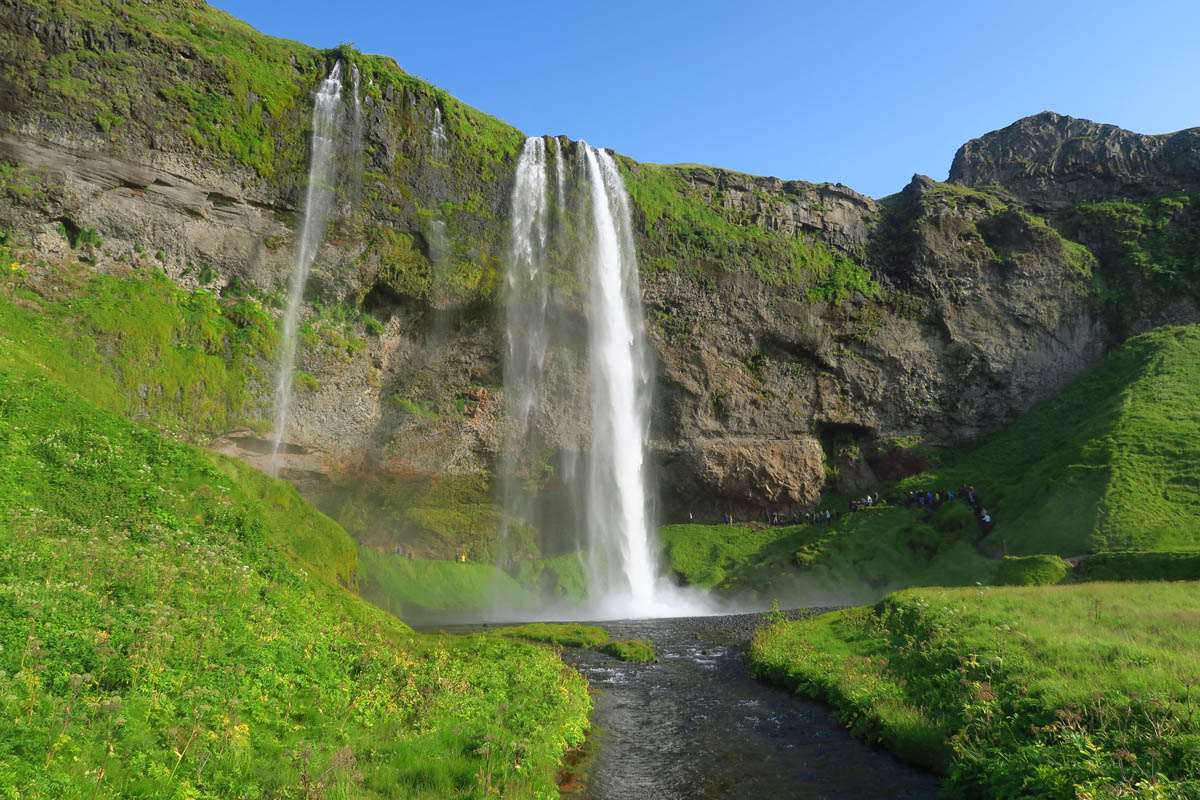 Moving on along, we come another extremely popular waterfall, Seljalandsfoss, 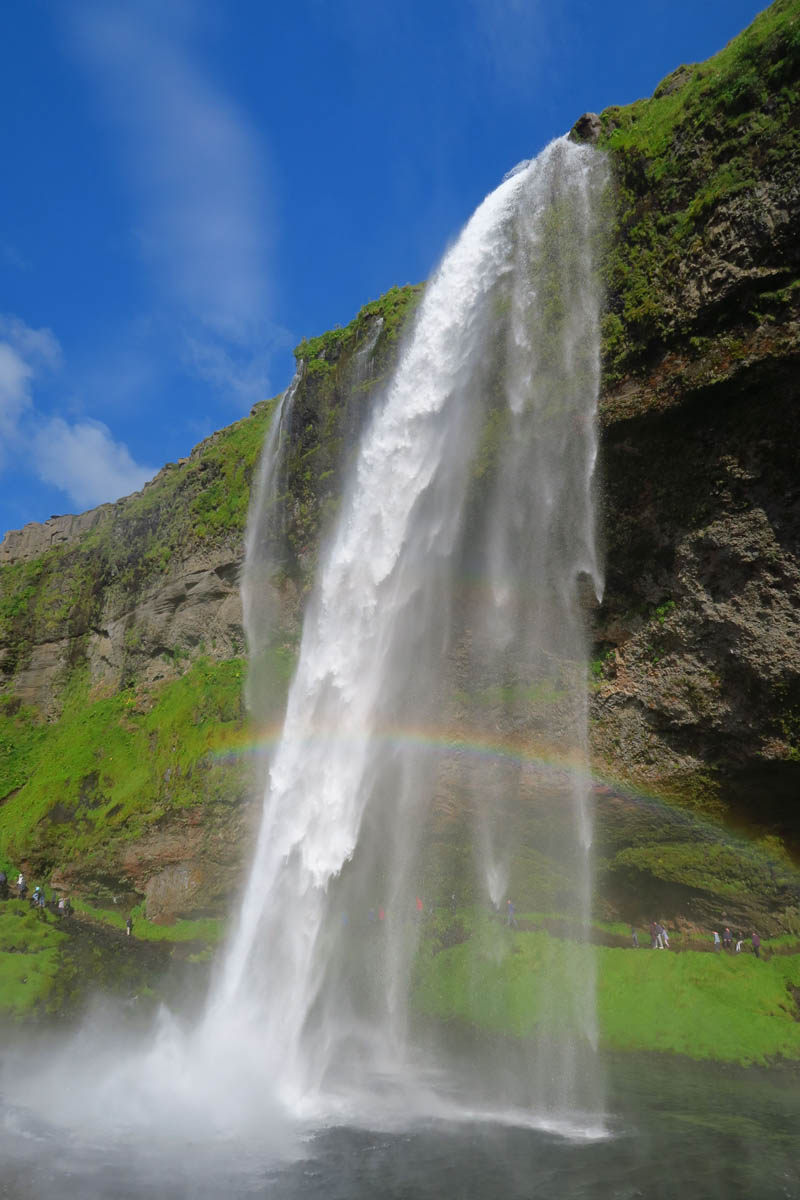 The thing that makes Seljalandsfoss so popular is the path that leads behind it. 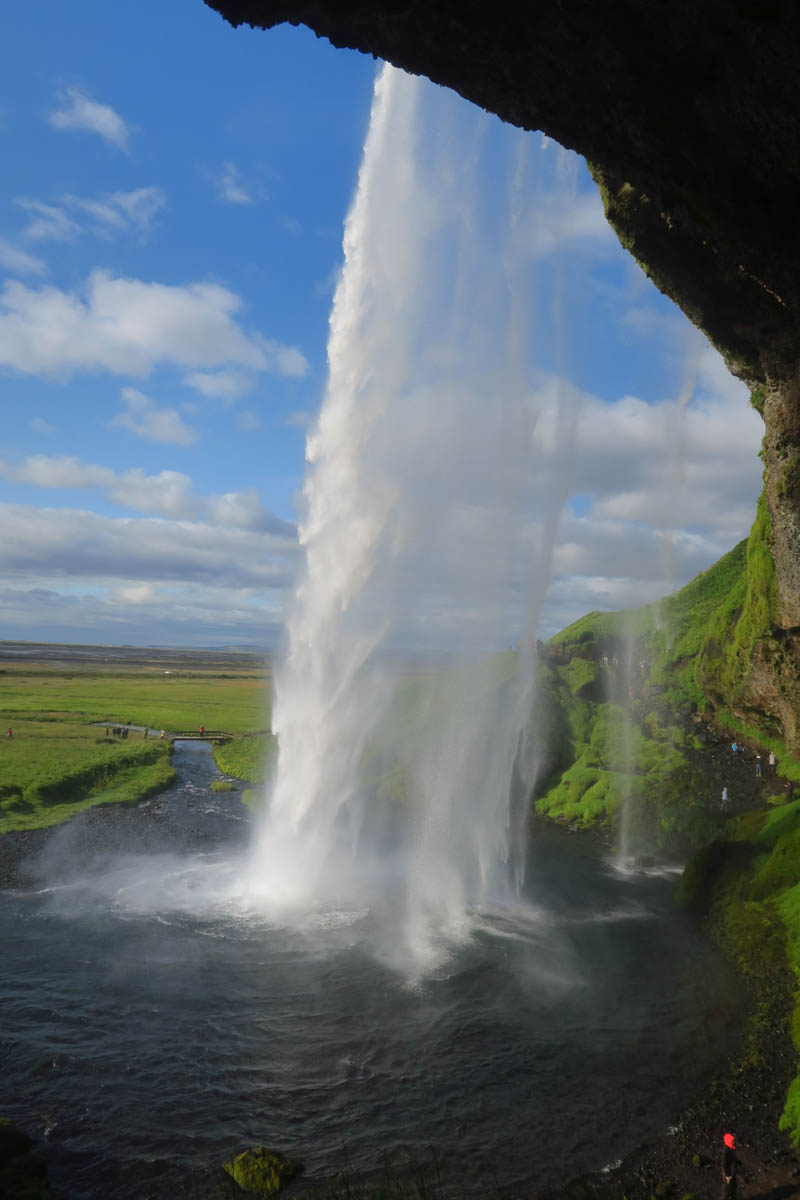 Walking behind, one is sure to get wet, so wear your rain jacket! 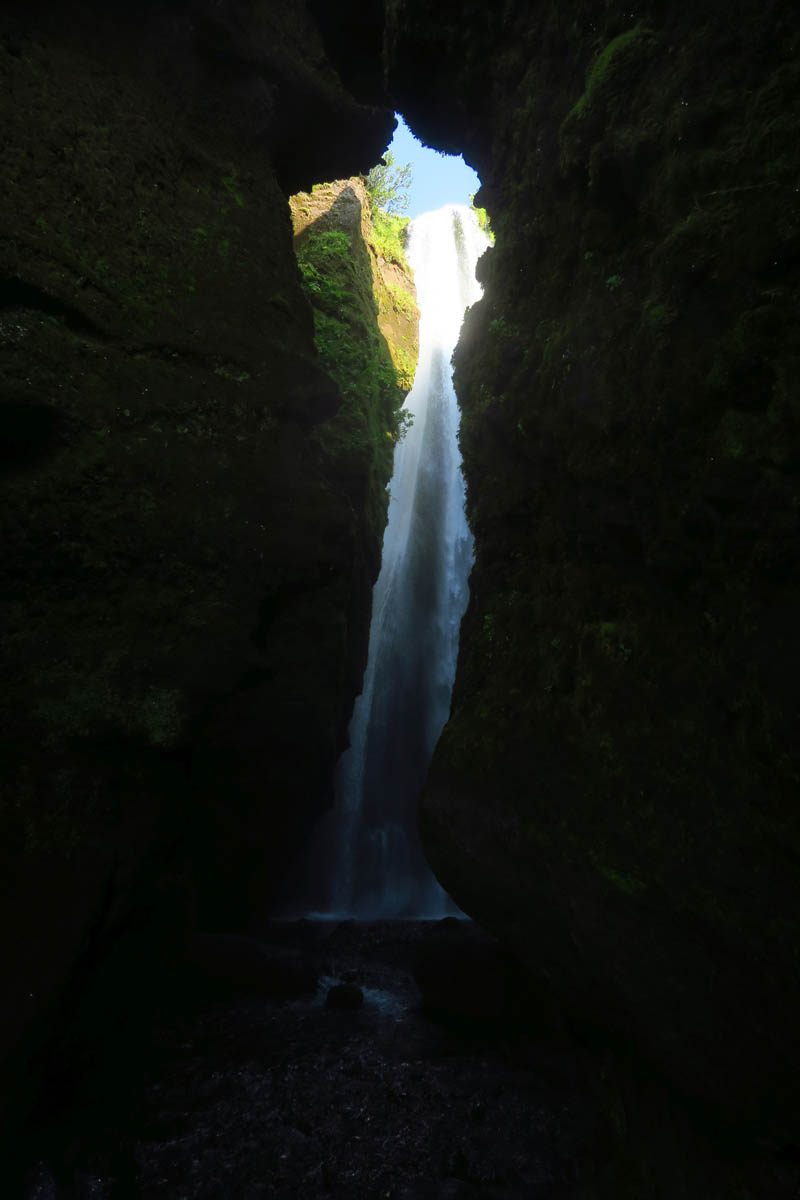 Just a few yards down from Seljalandsfoss, look for a narrow opening in the rocks. 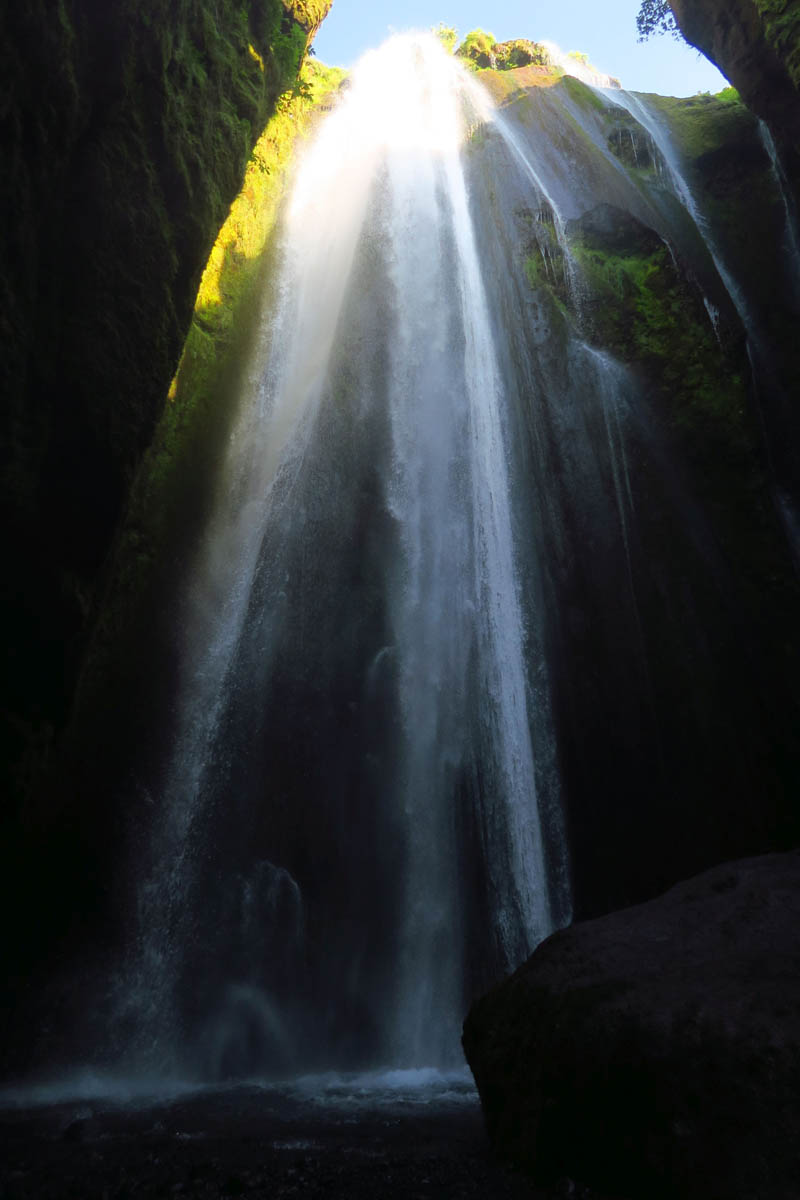 If the water is not too deep, you can step through the crack for a look at the “hidden” waterfall, Gljúfrabúi. 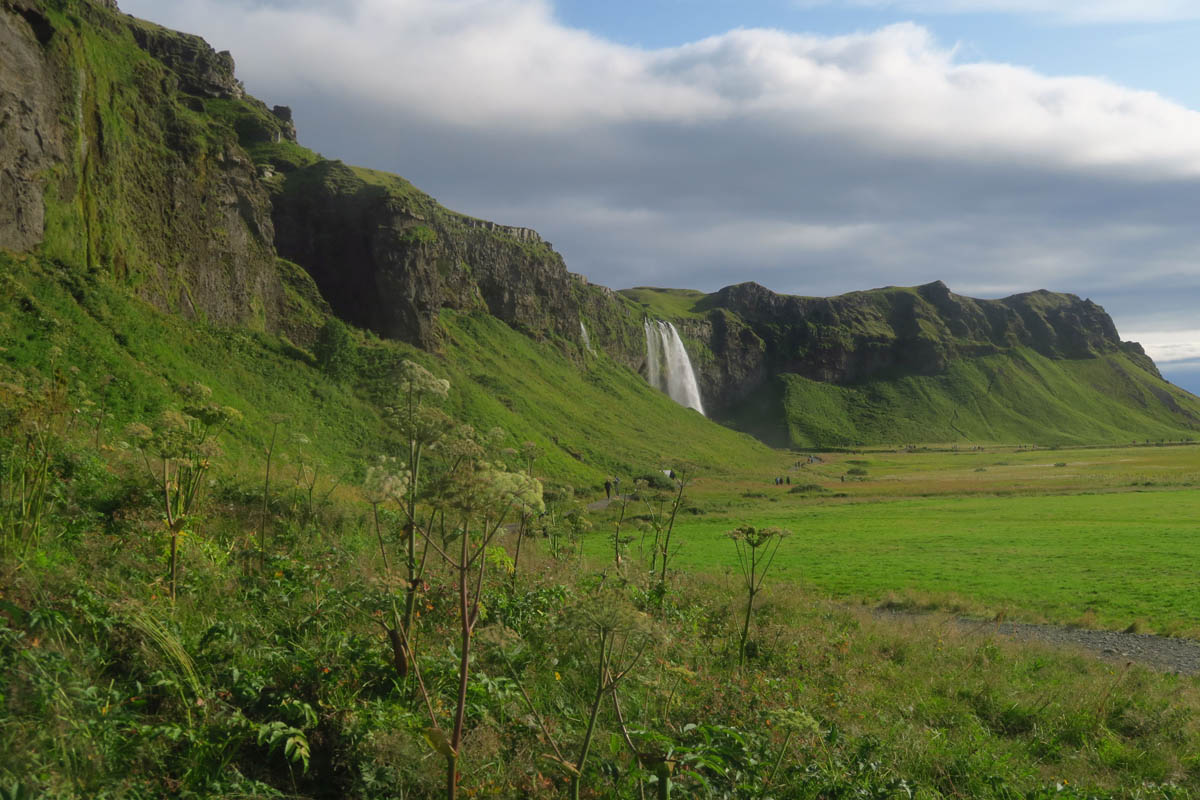 Both Seljalandsfoss and Skogafoss are right off the Ring Road, making them very popular stops.