Please forgive my lapse in completing the loop around Iceland on the Ring Road.  In real time, I stepped up my pace a bit while traveling as COVID cases have been on the rise again throughout Europe.  Doing research to stay in front of the rapidly changing border rules and restrictions has taken a bite out of my “screen time.”

Closing the loop on the clock face, my trip around Iceland’s Ring Road has finally come back around to where we started, near eight o’clock. But there is still one key attraction left to cover, the Golden Circle. This is by far Iceland’s most popular day trip. Not really a “circle” per se, more like an elongated diamond, the itinerary can be started at Selfoss, or more often, Reykjavik. This one circuit encompasses many of the attractions for which Iceland is famous; a waterfall, a geyser, hot springs, and a national park. 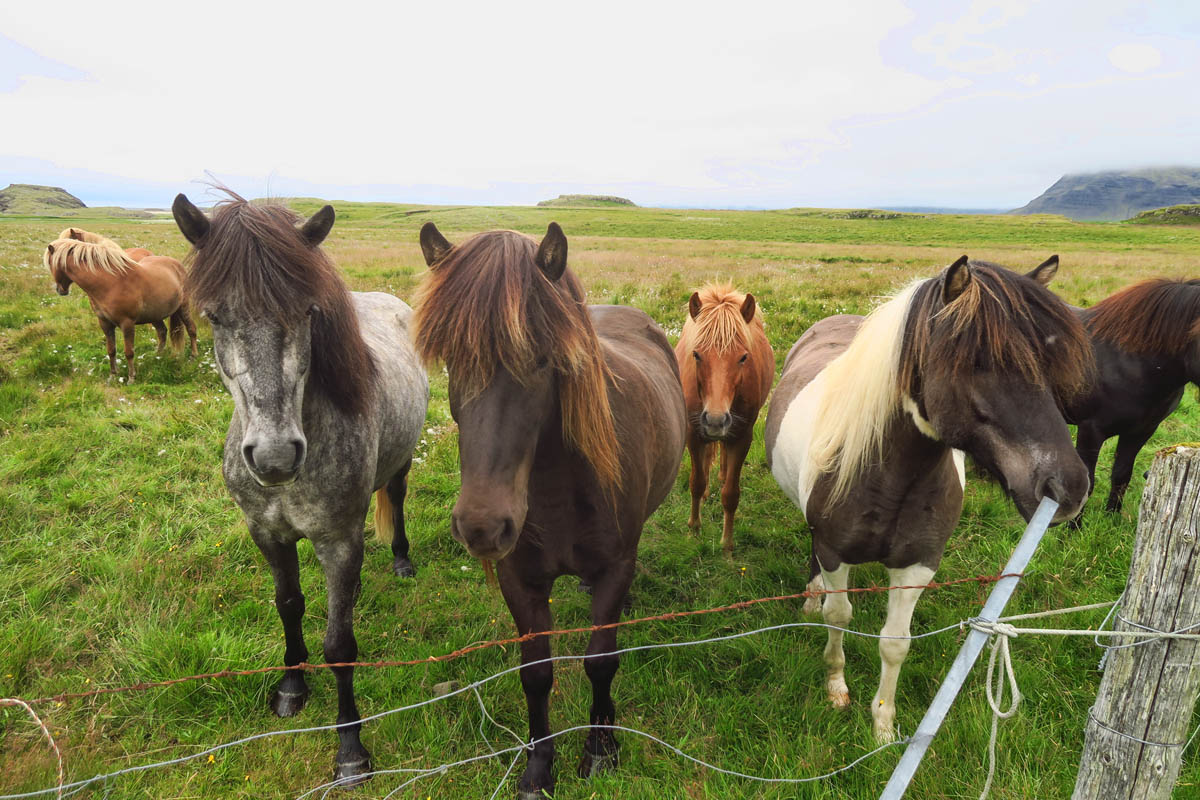 Tourists are no strangers to Icelandic horses, as they all come running to greet me as soon as I pulled the car over. 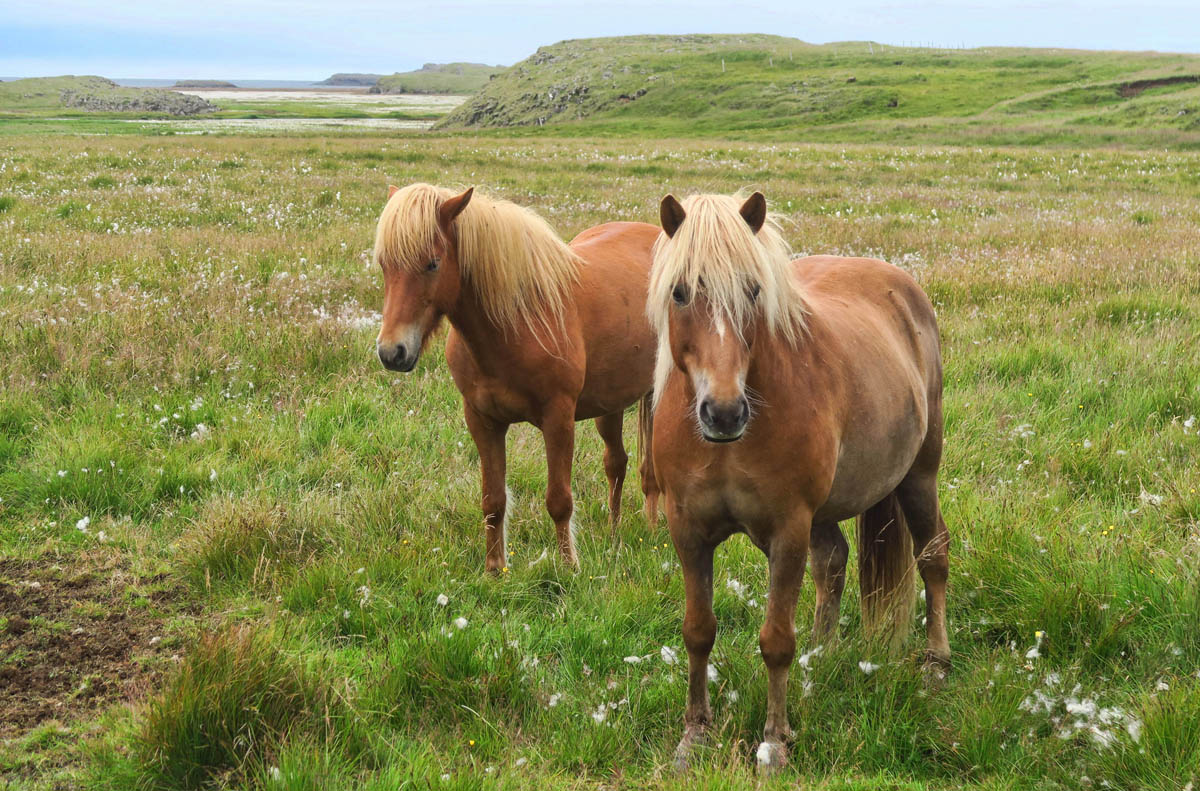 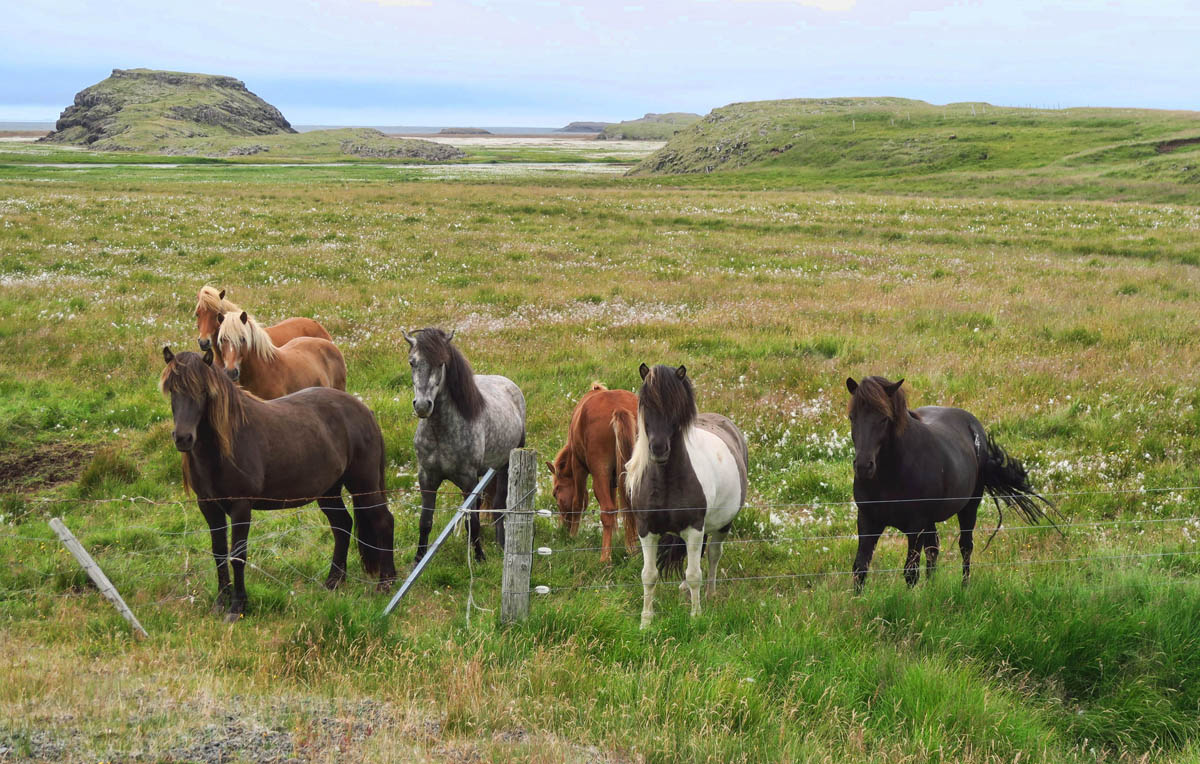 “What, your leaving without giving us treats? Where are my carrots? Apples?? What kind of tourist ARE you?”

I saved the Golden Circle for last, not knowing if it would be the “pièce de résistance,” or if it would feel like a letdown after having come all the way around. But another day of rain on the heels of my previous days soaking in the Highlands didn’t really give it much of a fair shake. If you know that feeling of wanting to stay in bed curled up with a good book on a cold, rainy day, you know what I mean. Thank goodness I had the noon reservation for lunch at the Friðheimar Farm, otherwise I might have stayed in bed with my latest audio book the entire day.

In a way, it seems odd that a restaurant would be one of the attractions along the Golden Circle. But Friðheimar Farms is not just a great lunch stop on the Golden Circle. It’s located one of Iceland’s largest geothermal greenhouses producing 700 annual tons of the sweetest tomatoes I have ever tasted. 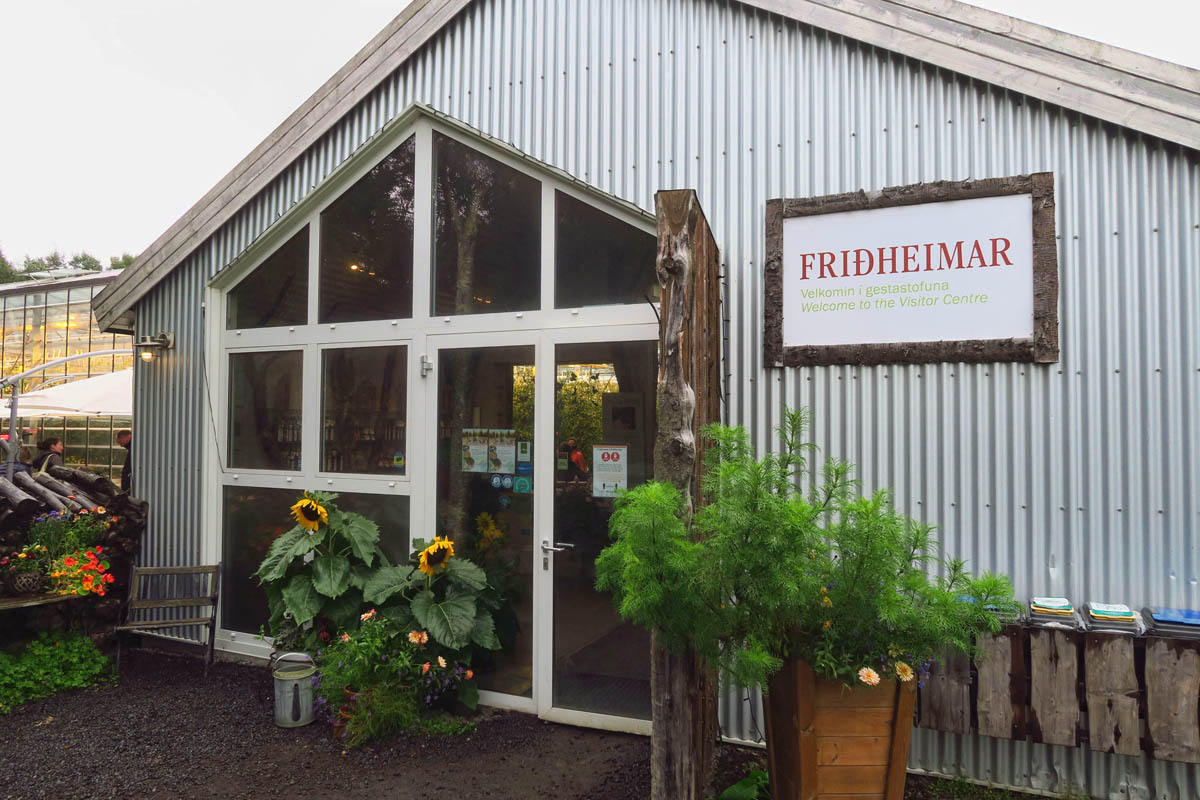 The Friðheimar Farm is the most popular lunch stop on the Golden Circle, so reservations are recommended. Reservations also provide motivation to get moving on a rainy day! 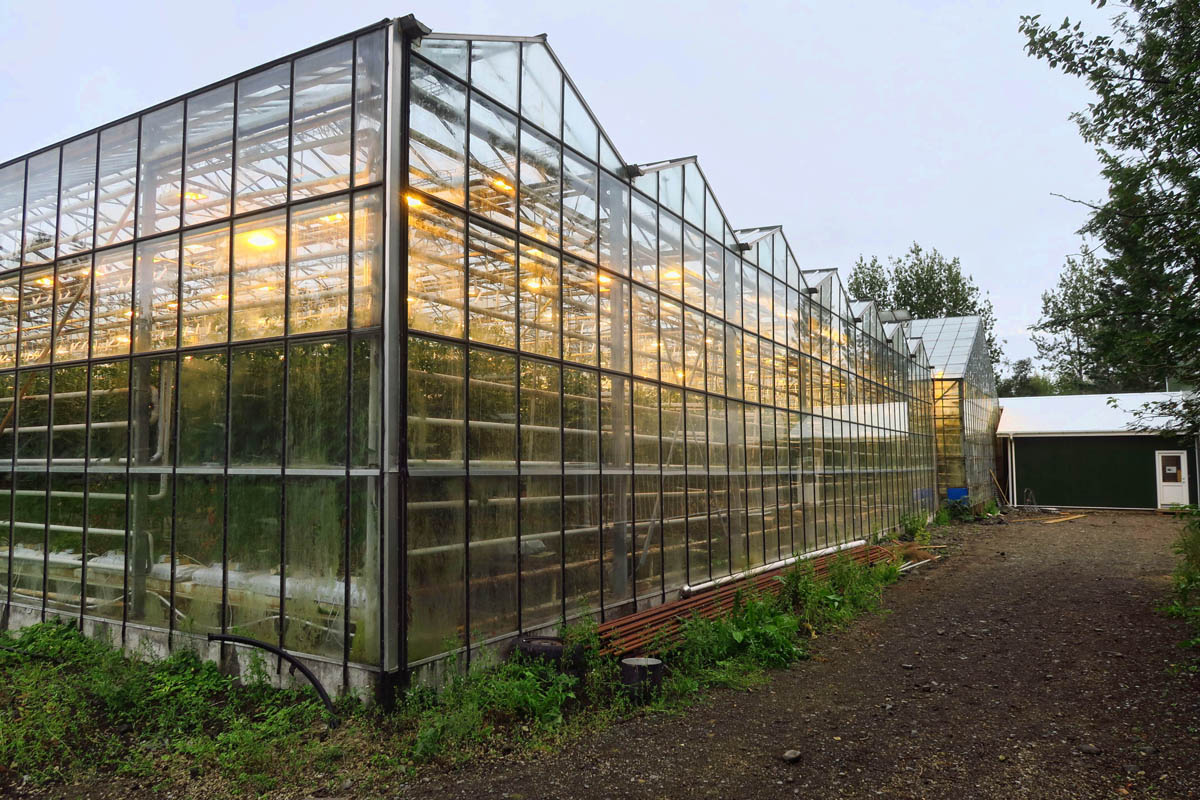 Tomatoes are grown here all year round in 11,000 square meters (2.7 acres) of electronically lit greenhouses, powered by geothermal resources. The tomatoes are harvested every day of the year. 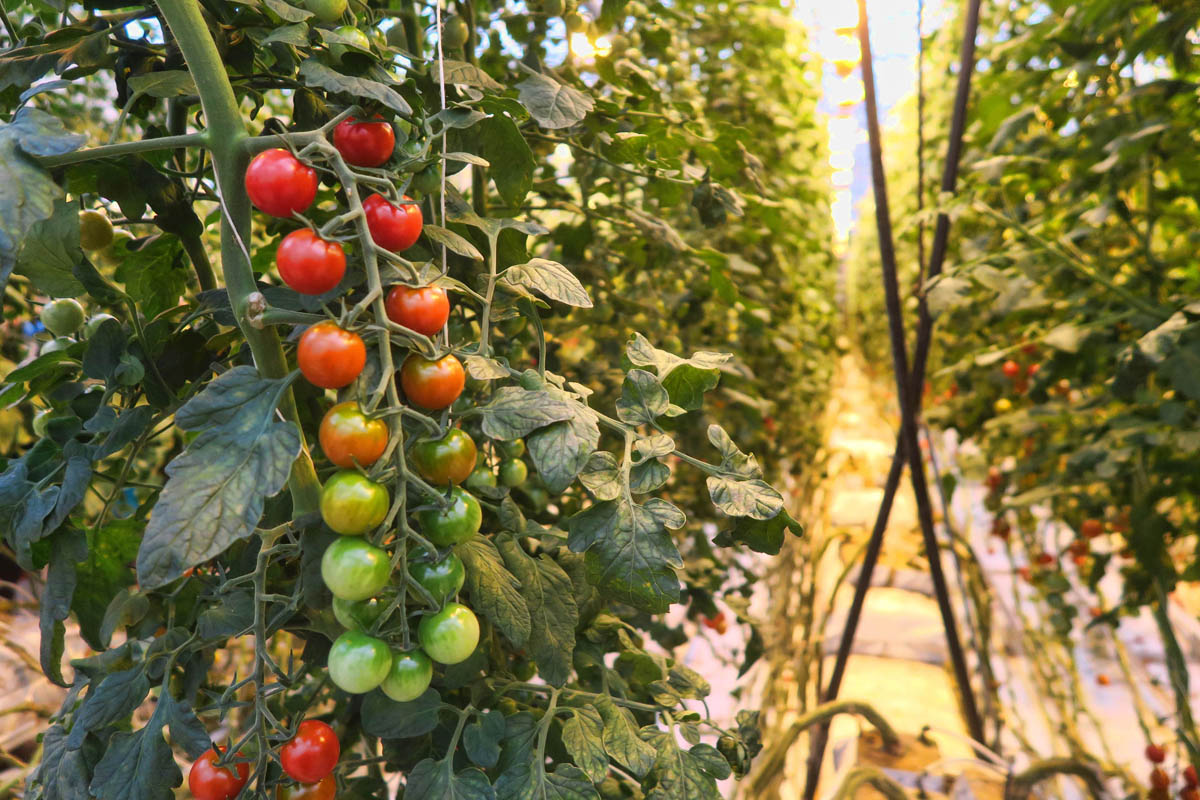 They grow 6 different kinds of tomatoes here, but the restaurant is situated among the vertical vines of the cherry tomatoes. 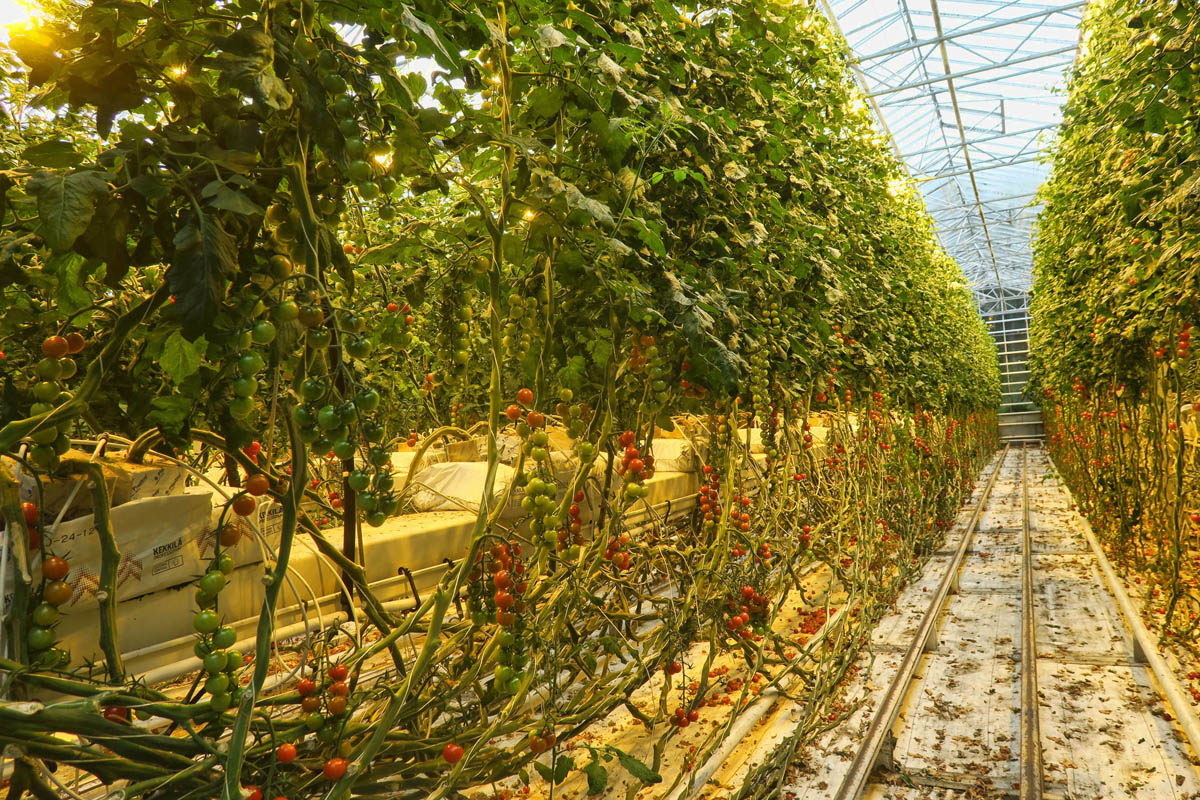 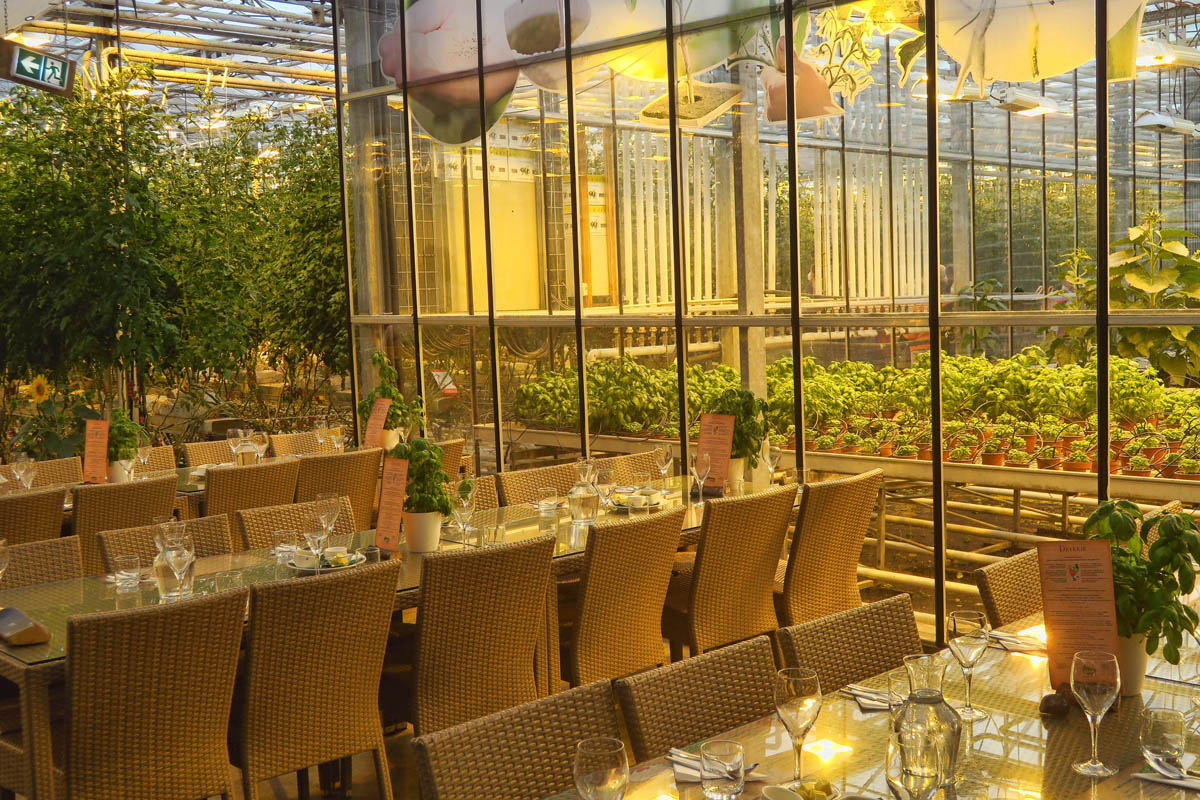 The restaurant is surrounded on all sides by tomato vines, basil plants, cucumber vines, and a bar serving tomato-based cocktails. This section is for groups. They have another section for individual guests. 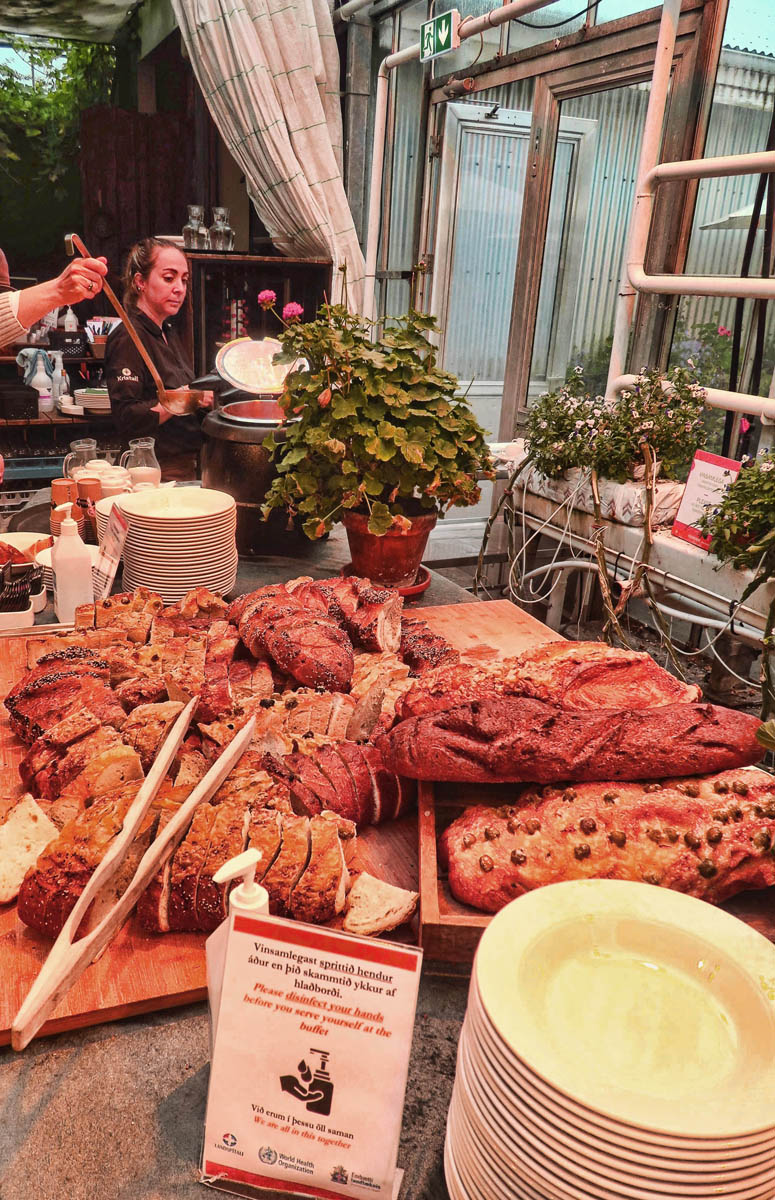 Everything on the menu is made in house, including their freshly baked bread. There are many varieties, my favorite being the one infused with olives and cheese. 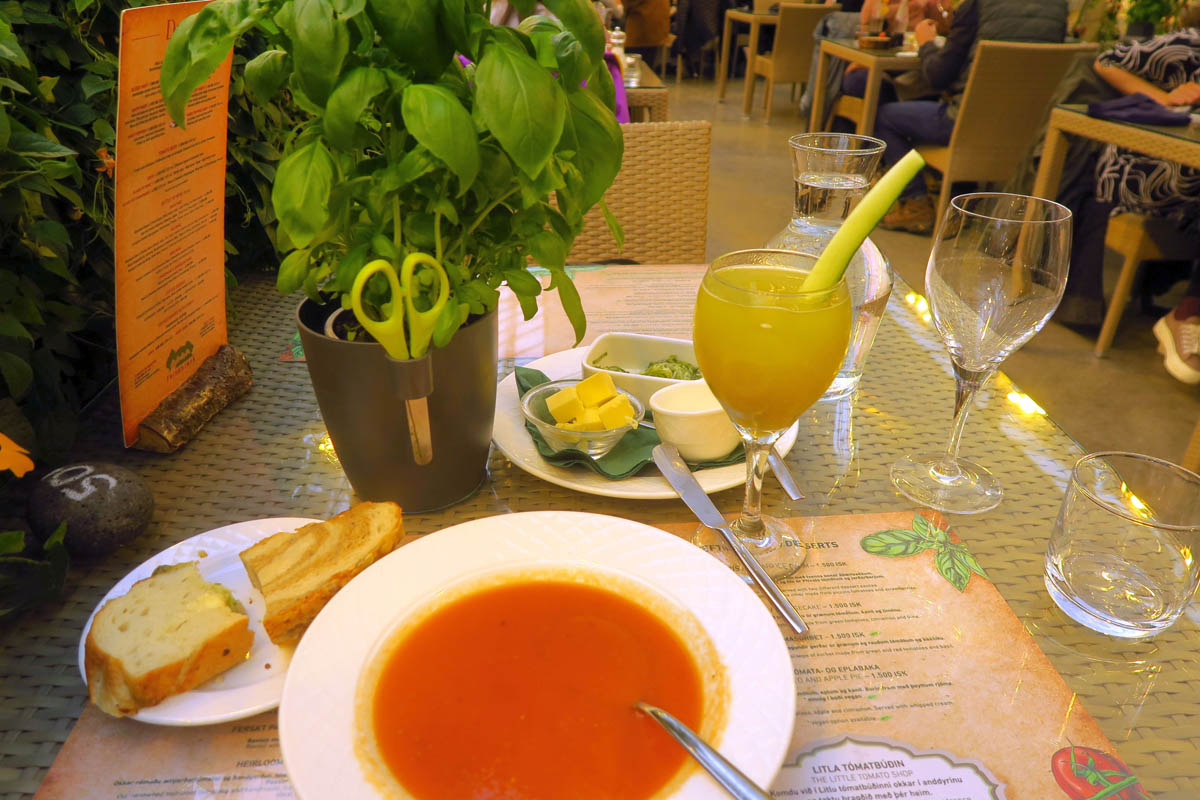 Their most popular menu item is their bottomless tomato soup bowl and bread bar. The soup is served with a side of butter and cucumber relish for the bread, and sour cream and a living basil plant for the soup. Note scissors on the basil pot so you can harvest fresh from the plant.

Friðheimar is a family owned tomato farm in operation since 1946. They supply 40% of all tomatoes consumed in Iceland using natural geothermal resources to heat, water, and nourish the plants with natural CO2 during the growing process. The tomato plants are pollinated by imported bees from the Netherlands, and in lieu of pesticides, “good flies” are incorporated to eat the eggs of the “bad flies.” Smack dab in the middle of the greenhouse amidst the flora and fauna is a restaurant serving lunch where all items are made with tomatoes, from beer to ice cream.

Control computers in each greenhouse control heat, humidity, carbon dioxide and lighting. They are linked with fertilizer blenders that water the plants according to a predetermined schedule. Weather stations on the rooftops obtain information on wind speed, direction, temperature and sunlight. All these devices are connected to the main computer which allows the owners to monitor status, change settings, and control watering from anywhere in they happen to be in the world. 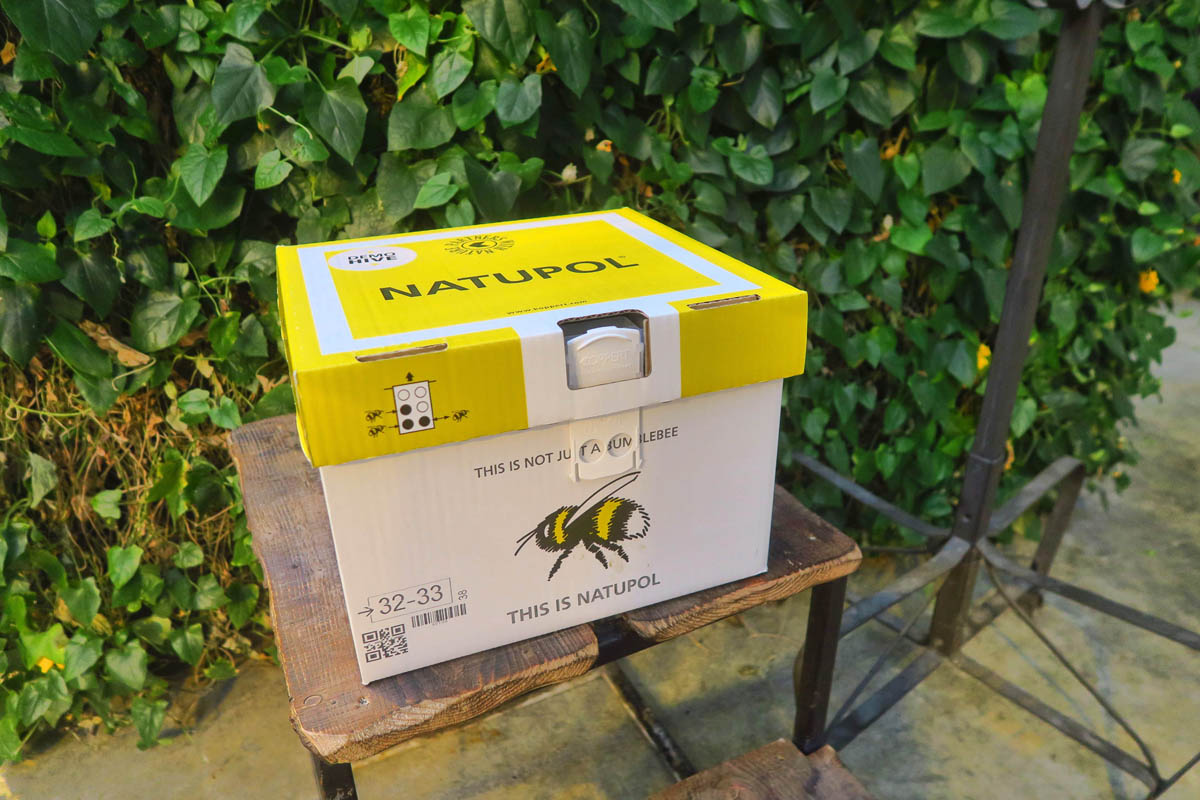 Special bees are imported from Holland to do the pollinating. 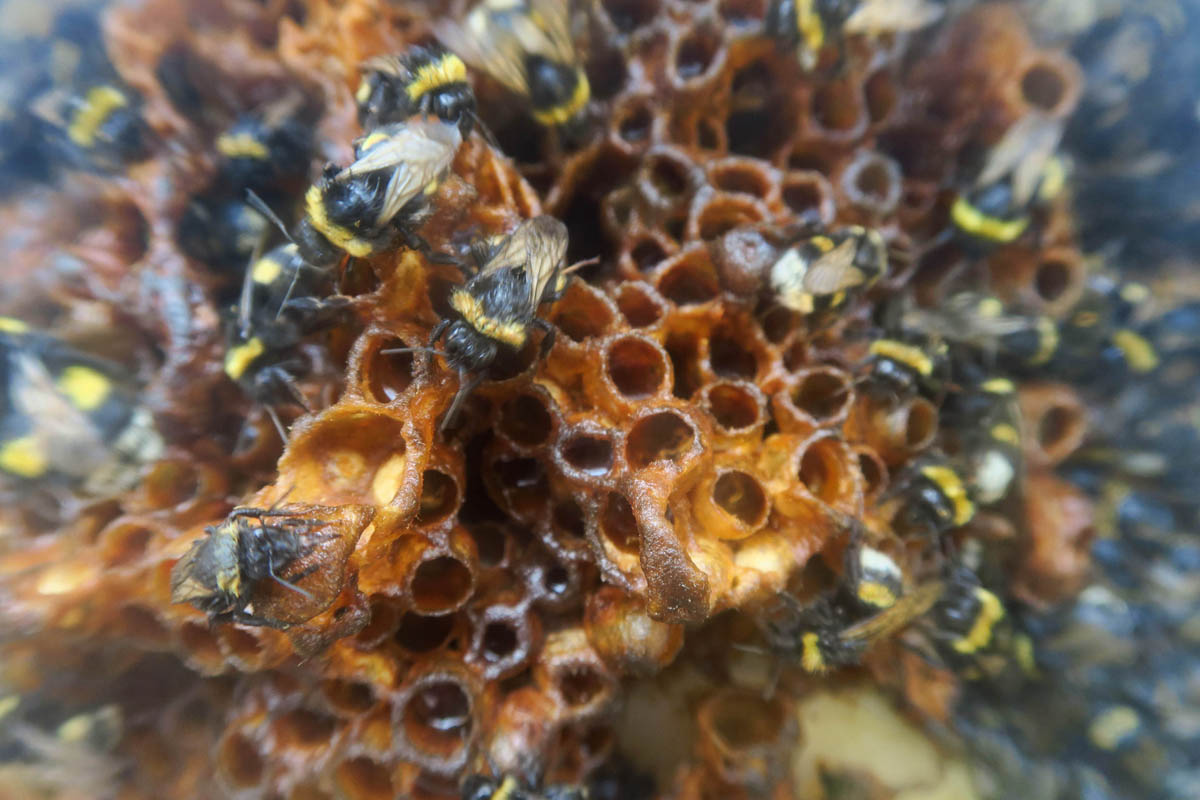 Tough to photograph through the plastic cover, but they look very different than honey bees. 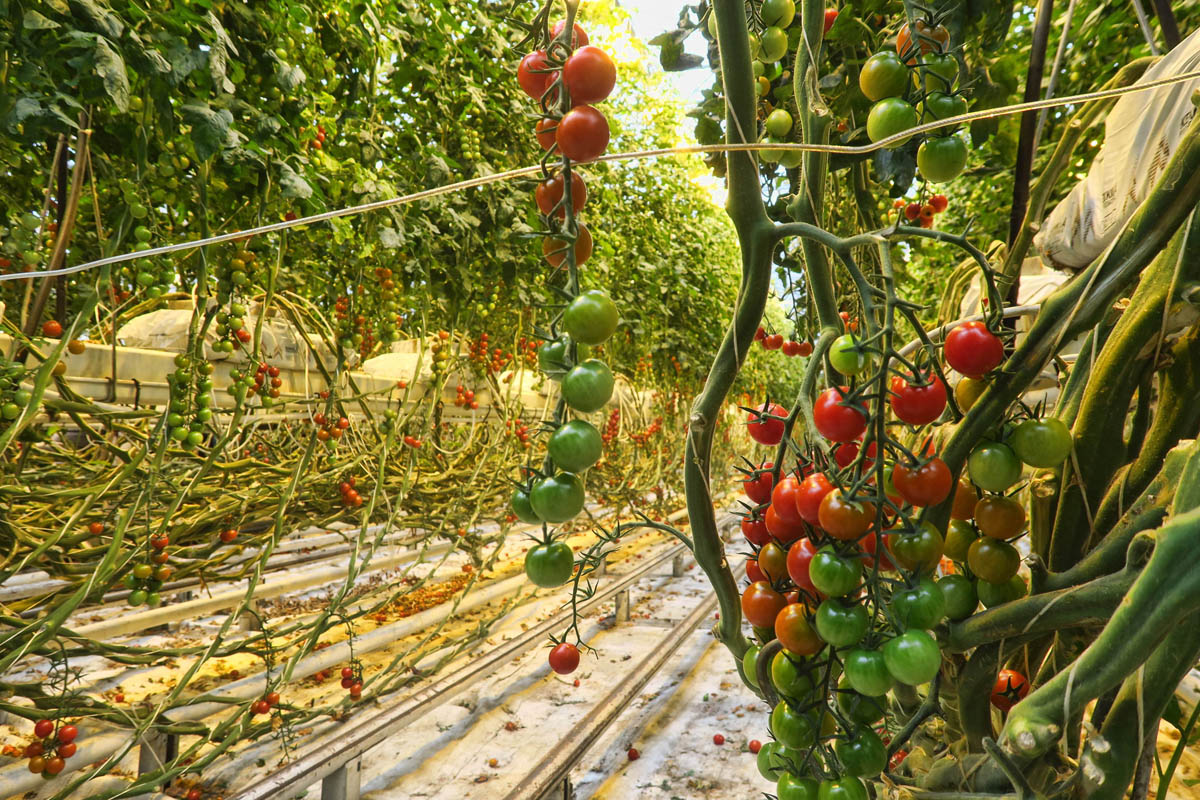 Iceland is known for its pure, good tasting water. Since tomatoes are 92% water, it’s no wonder they taste so sweet. They are not exported, so all are picked daily when ripe. 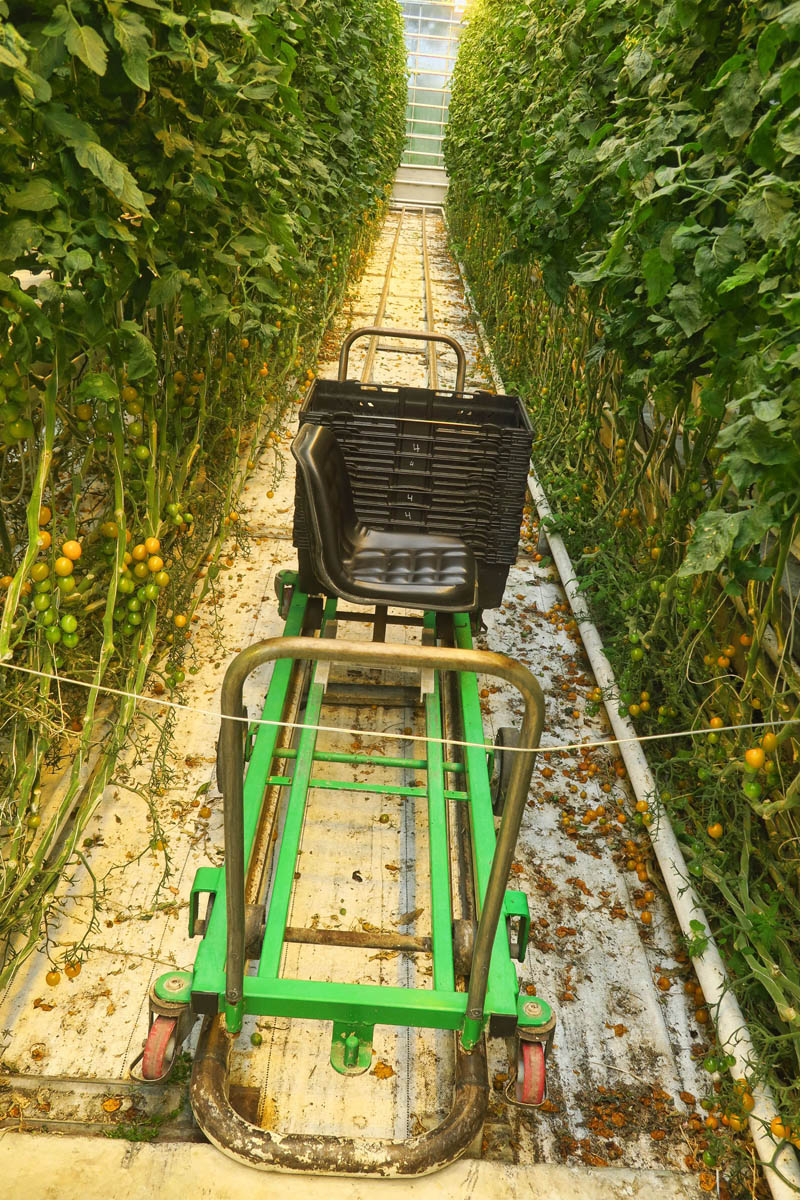 There are rails in between the vines so these trolleys with carts and seats can be rolled up and down to harvest the tomatoes. 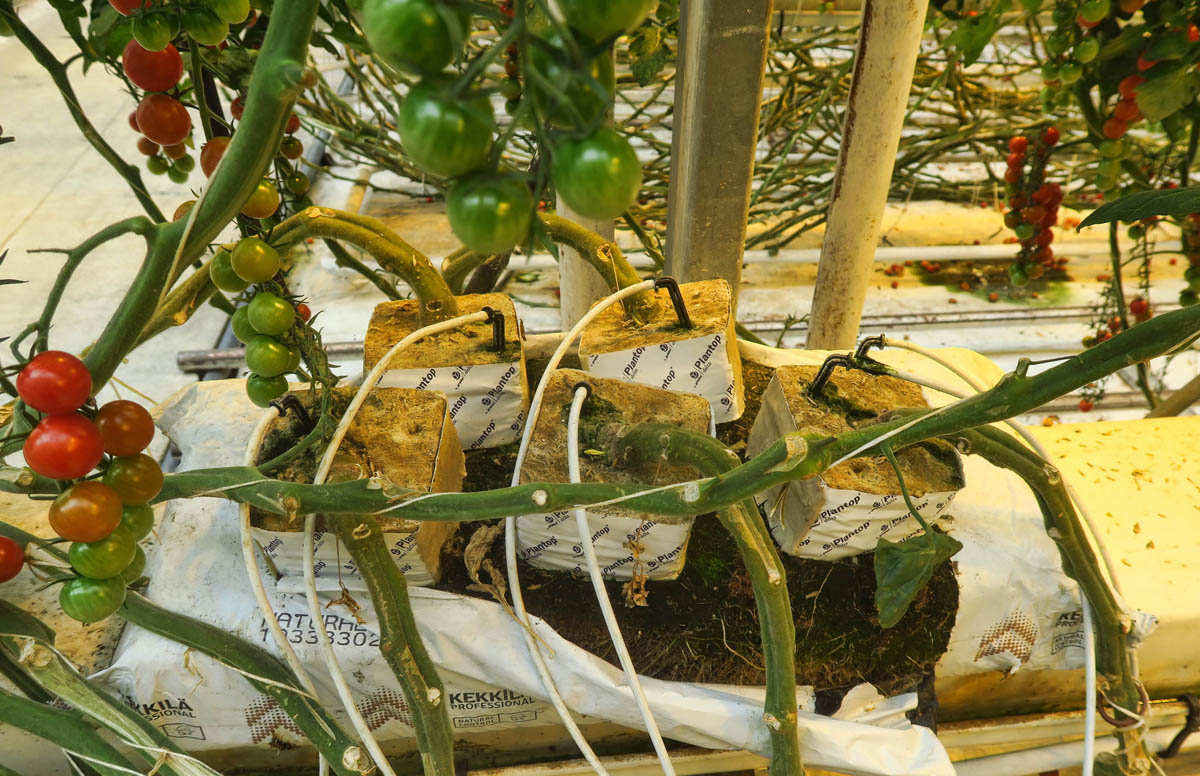 Vines are grown in these small bags of volcanic tuff, or pumice. Growing in pumice makes it simpler to control moisture and fertilization than in soil. 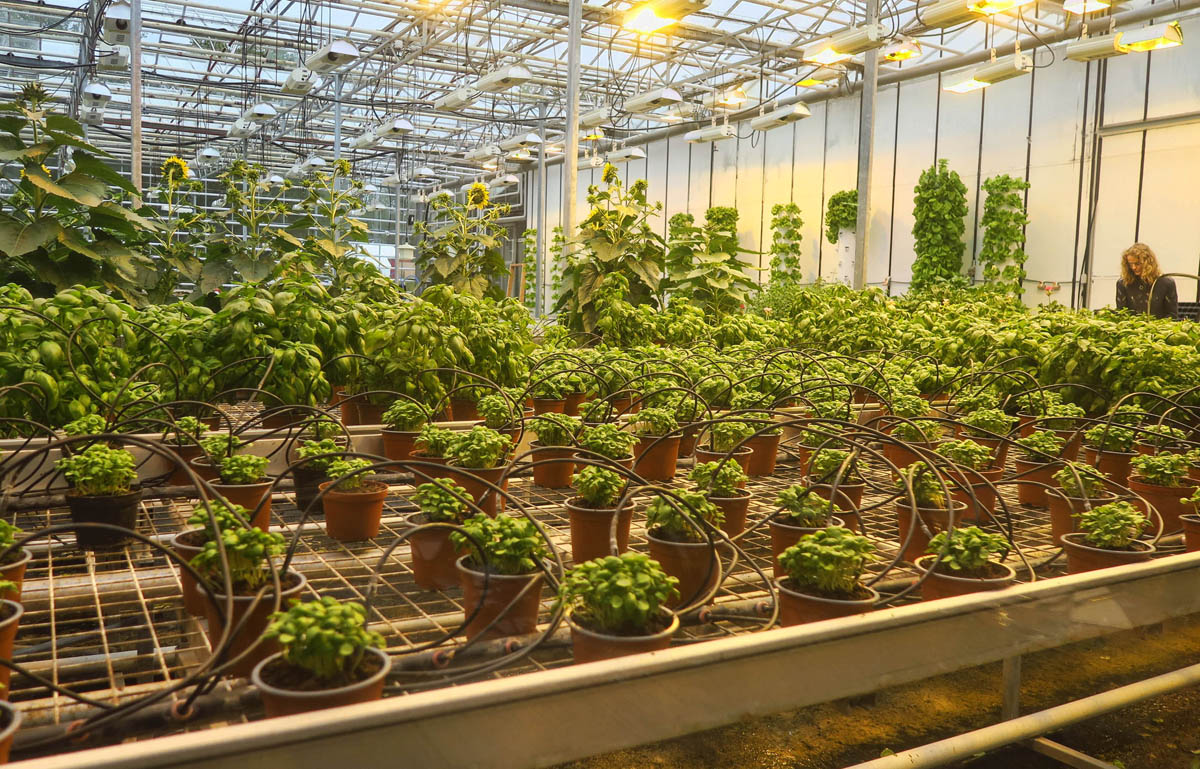 Fresh basil growing for your soup. It also makes for a sweeter tomato.

The Golden Circle is also home to Iceland’s only active geyser located within the Geysir Geothermal Area in Haukadalur Valley. The original geyser for which the area is named has been inactive since 1916 due to tectonic activity. However, the location has a spare, Strokkur, which erupts every 5 to 7 minutes, shooting water and steam from 65 to 130 ft into the air.

While the hot pools, mud pits, and token geyser are impressive, if you have been to Yellowstone, you might not think they warrant the massive Visitor Center, expansive souvenir shop, and restaurants across the road within the mall-like Geysir Center Complex. 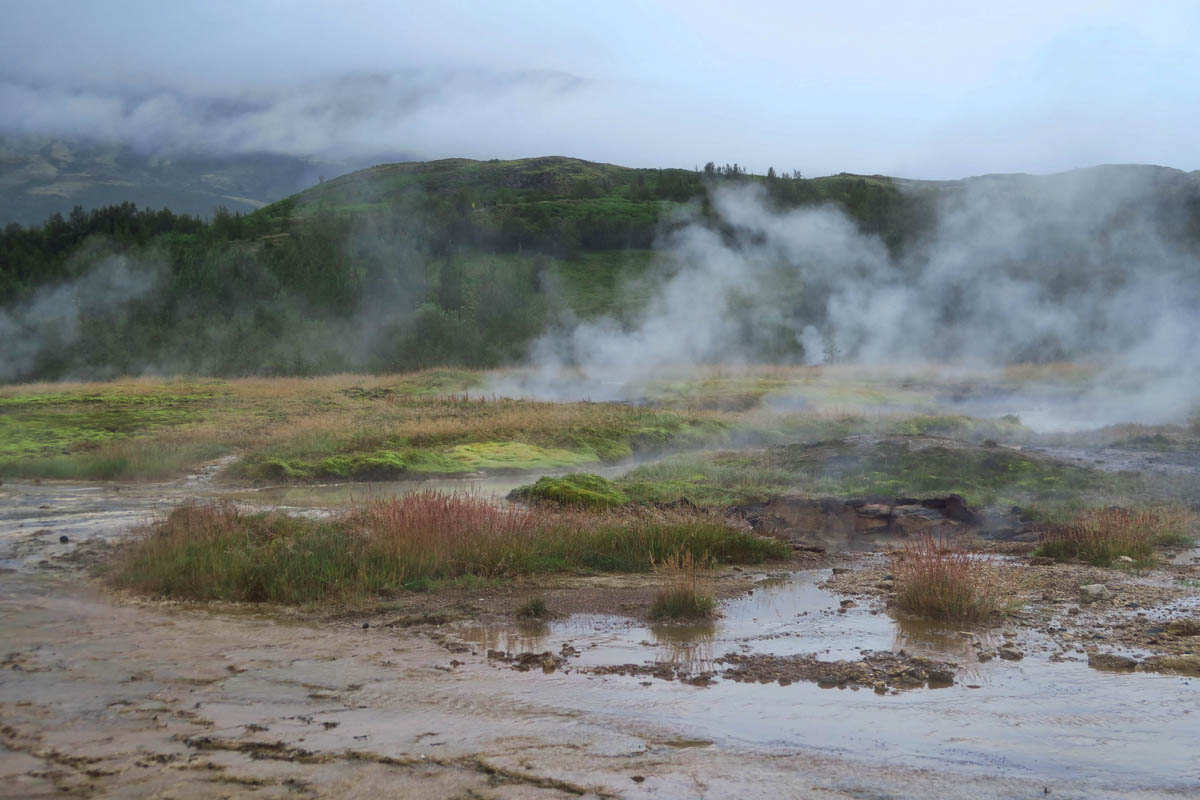 While the Geysir area contains Iceland’s only active geyser, I did not find the rest of the geothermal area to be as impressive as the Namafjall area near Lake Myvatn. 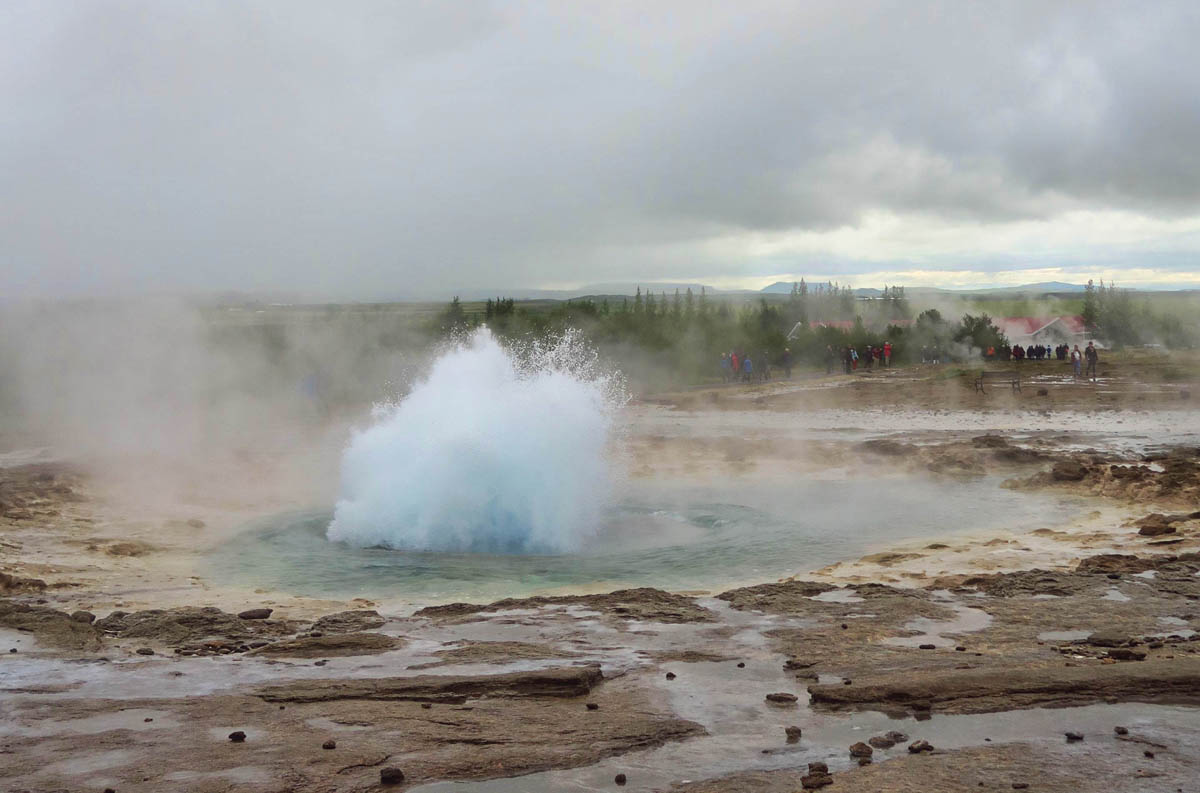 The eruption happens every 5 to 7 minutes. With the “digital delay,” it’s really tough to capture in a photo. 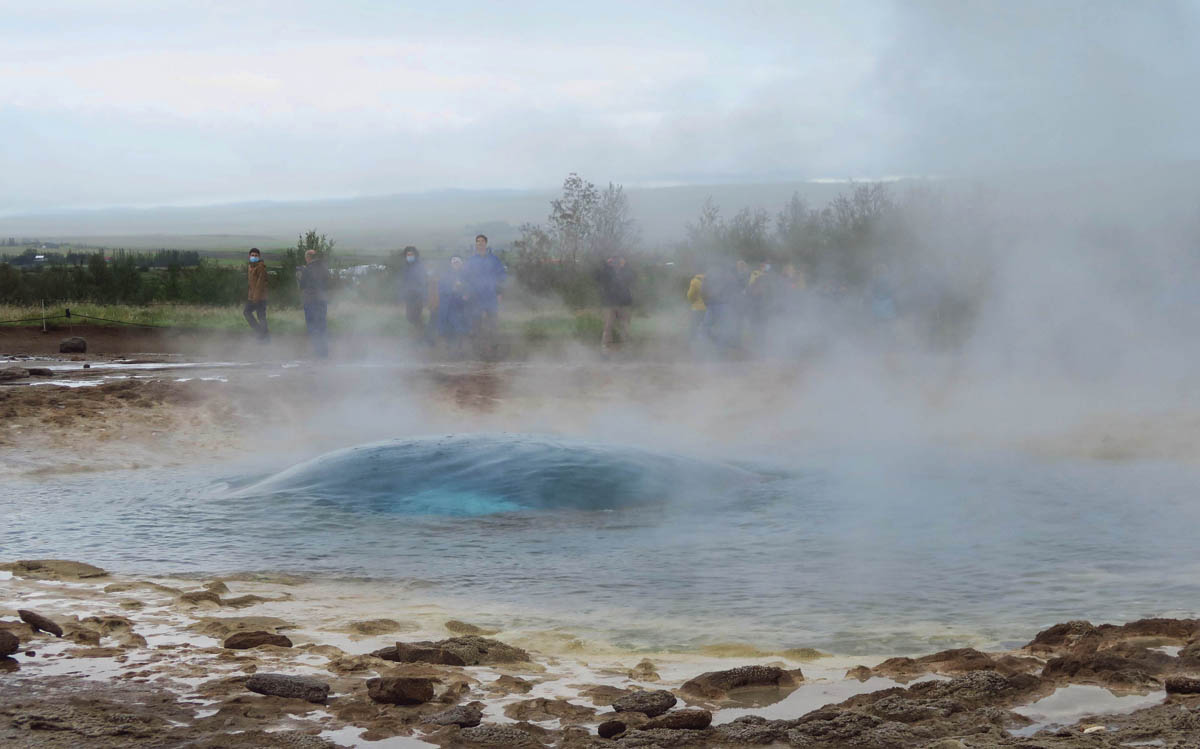 It starts with this clear blue bubble which I waited through about five cycles to capture on camera. 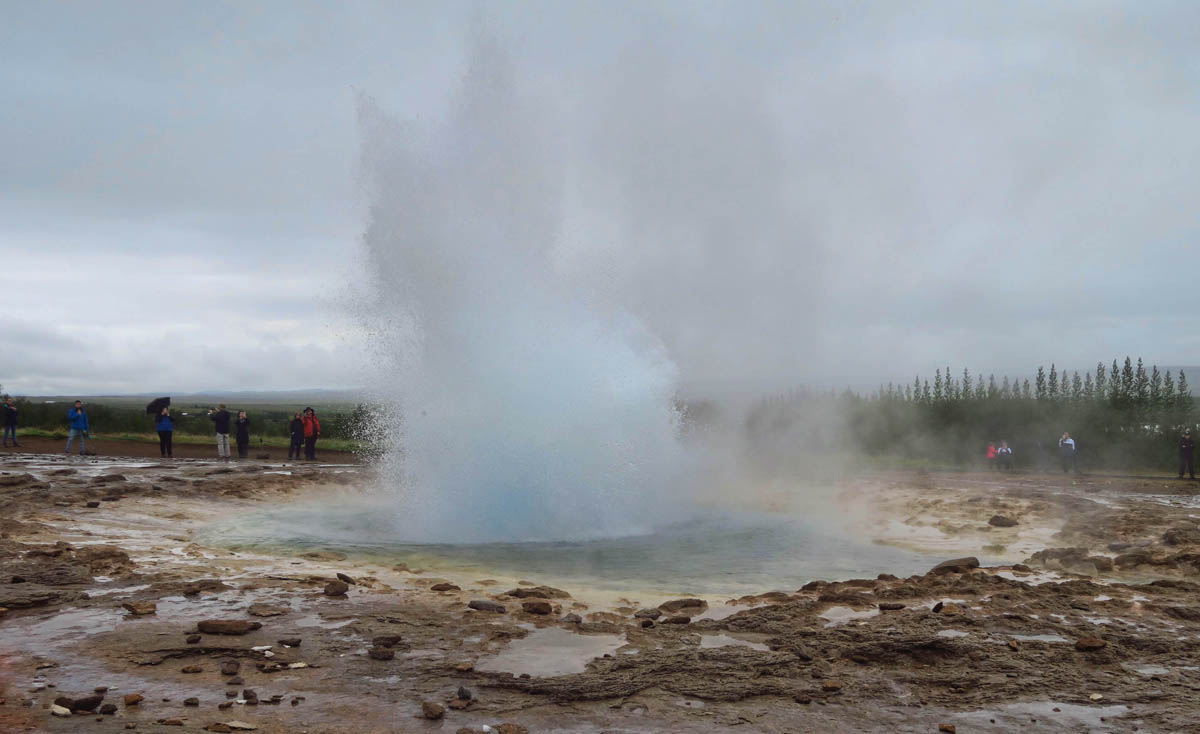 Always too early or too late with the shutter. 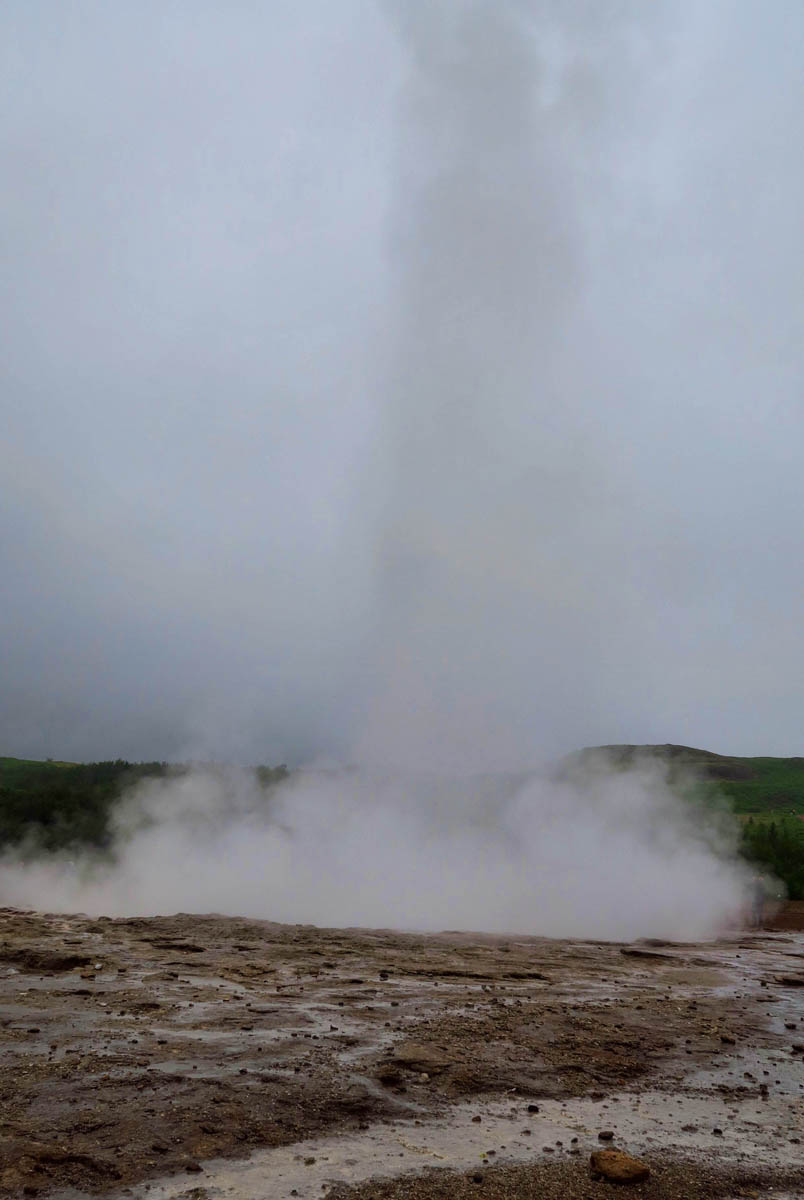 Finally I captured it at near-peak height, but it’s tough to see against the foggy, misty sky. 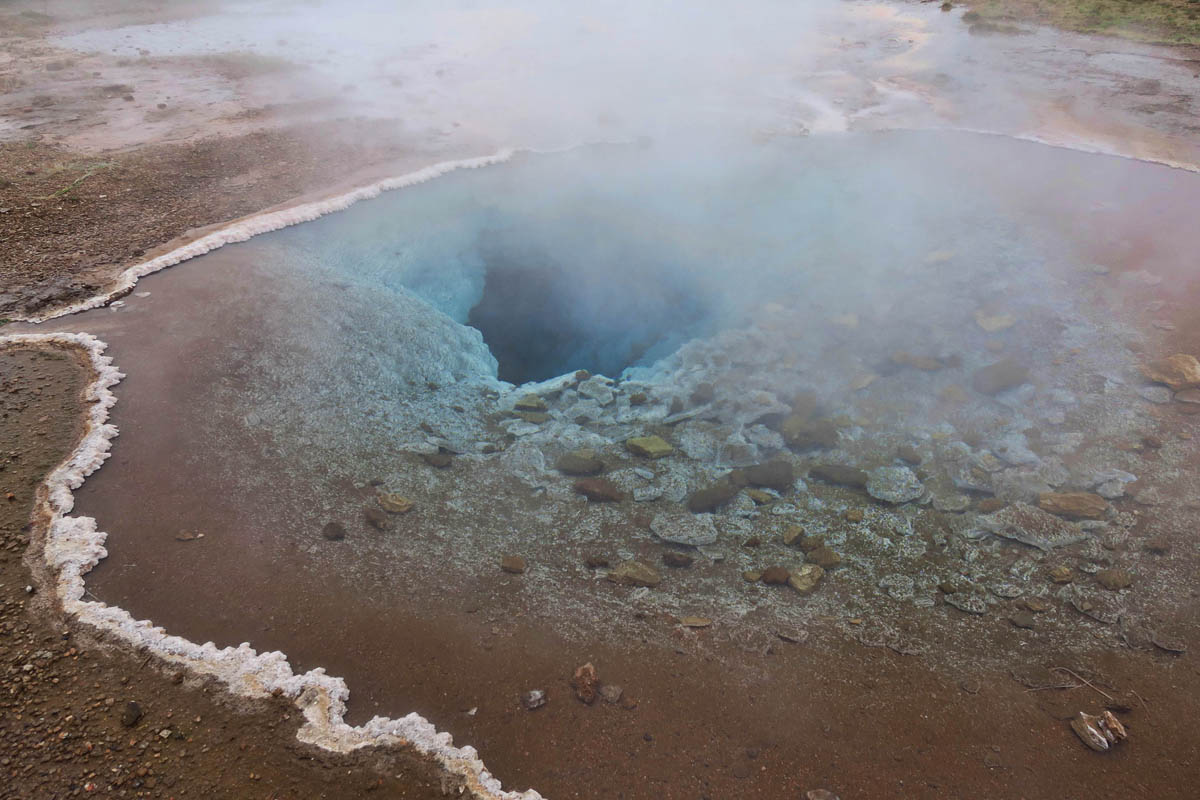 These deep blue pools look so inviting…if only.

Perhaps the greatest attraction along the Golden Circle route is Gullfoss meaning “golden waterfall” in Icelandic for which the circuit is named. The two-tiered falls can be viewed from two different levels. There are differing theories on how the falls got its name, from the golden hue the sunshine makes on its glacial waters to the rainbow created from the golden sun lighting up the spray. But I had to laugh at the local legend which says an old farmer had an abundance of gold and could not bear the thought of someone else possessing it after his lifetime. To prevent this, he placed the gold in a coffer and threw it into the waterfall. I’ve known people like this.

Due to its location as one of the top sites on the Golden Circle, Gullfoss is one of the most popular waterfalls in Iceland. It is located along a turn in the Hvítá river. Its first stage tumbles over a “staircase,” and then plunges down into a crevice for 105 ft. At this point, the river makes a sharp left-hand turn, giving it a unique flow. 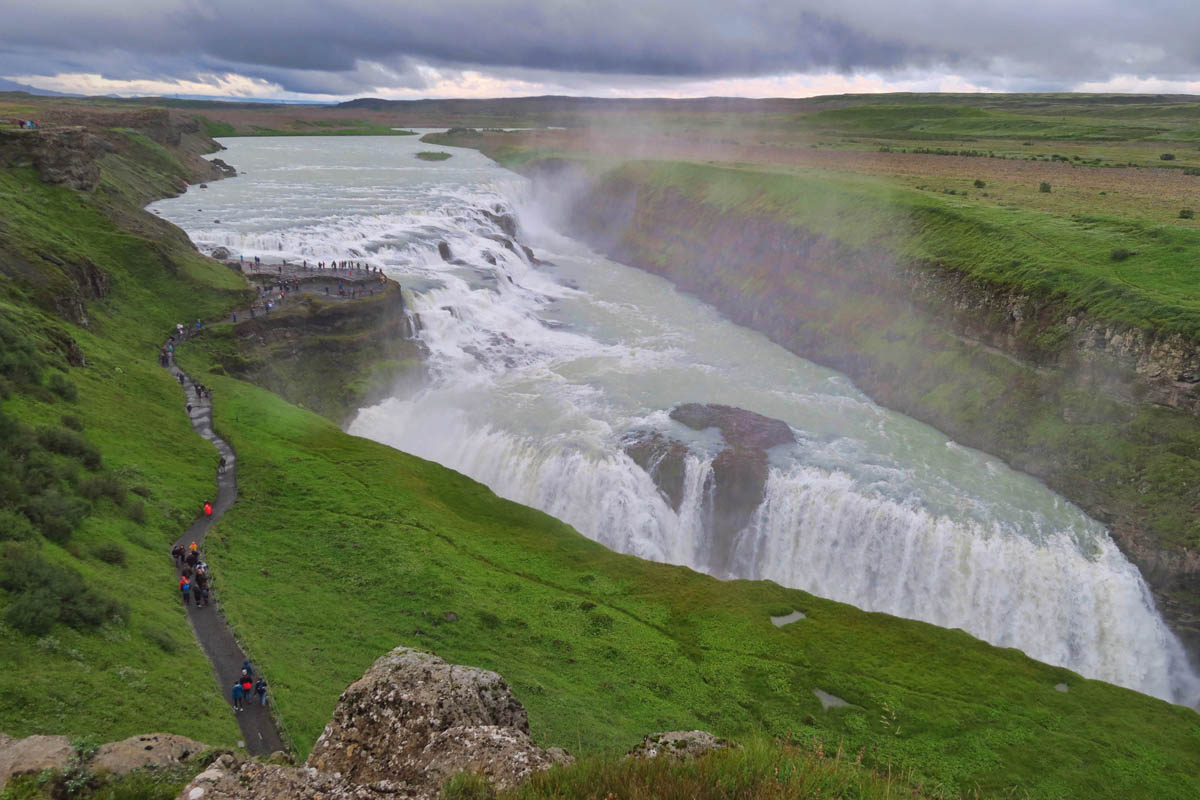 Gullfoss can be viewed from two different levels. The higher platform gives a long distance view, or you can walk down the stairs along a long path seen in the left of the photo to get a closer view. 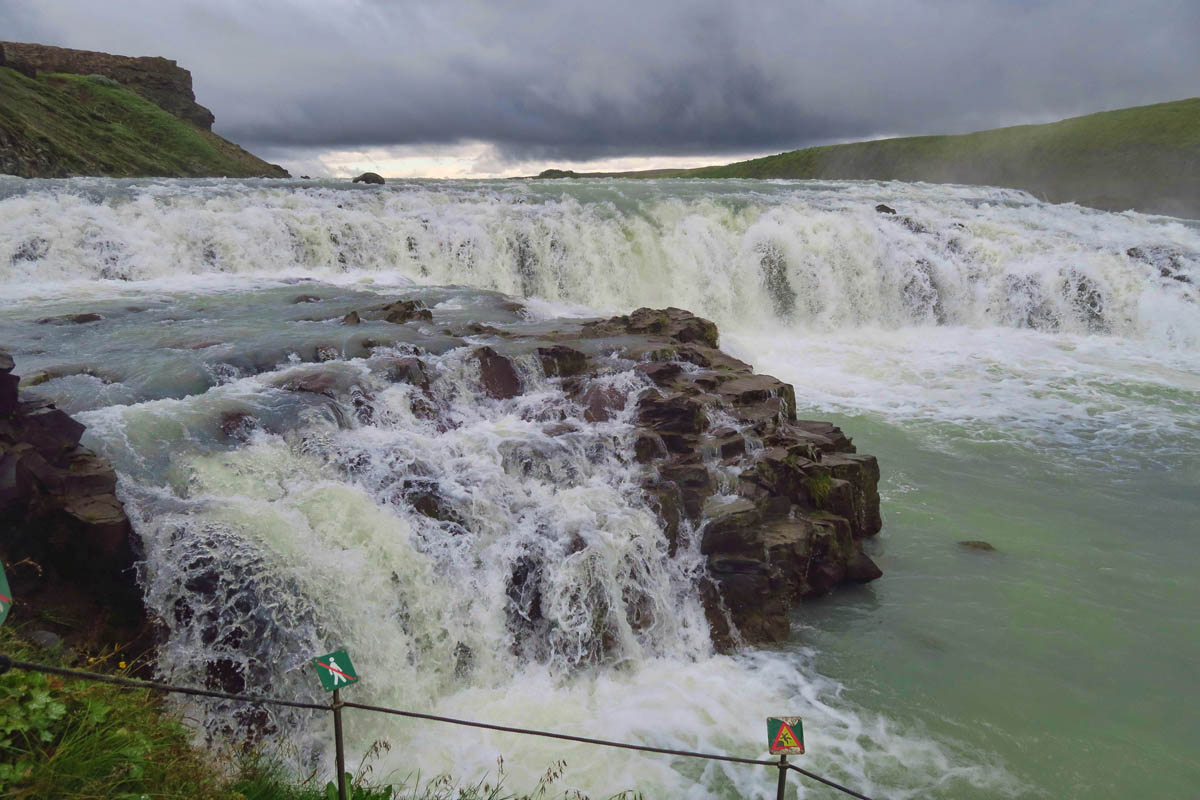 The top of the falls is more of a “staircase” cascade. 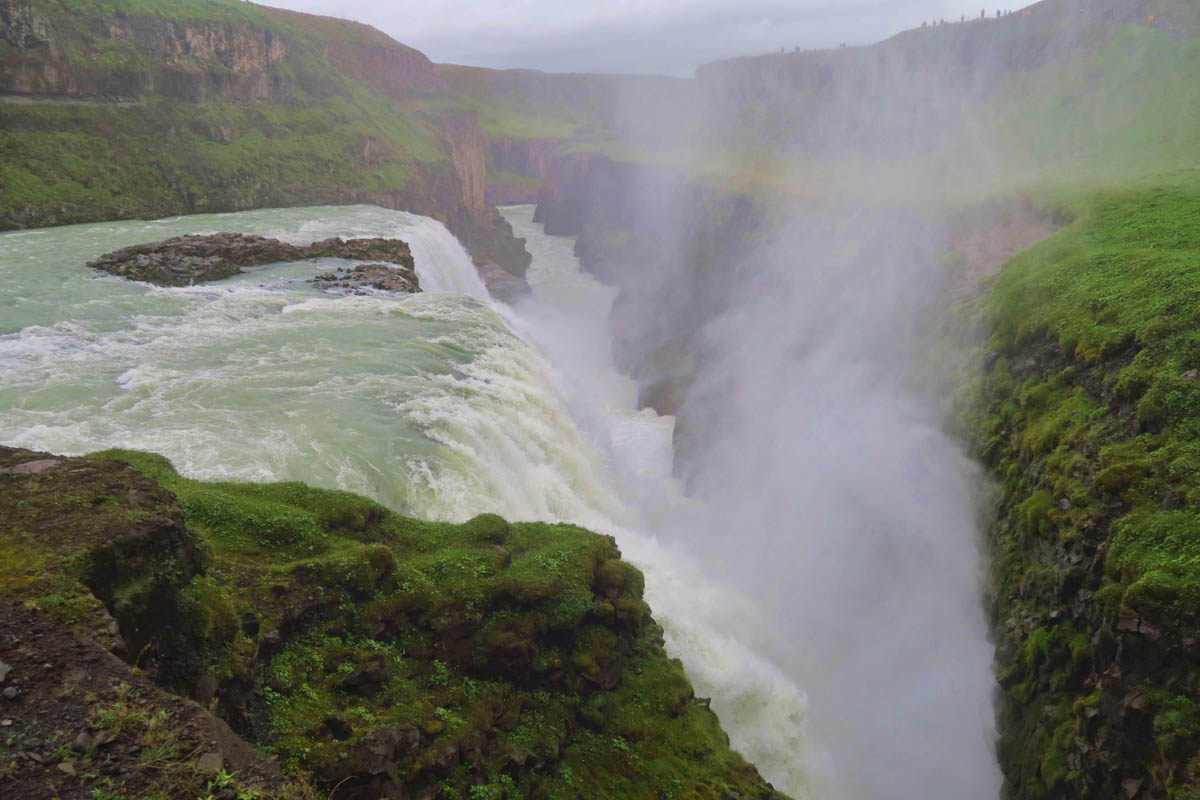 When it plunges into the canyon, the river makes a sharp turn to the left.

The other popular stop along the Golden Circle was Thingvellir National Park. It is a UNESCO World Heritage site known for its dramatic geology, as the North American and Eurasian tectonic plates meet here. It was also believed to be the site of Iceland’s first medieval parliament. One can also snorkel or dive here for the gimmick of “diving between the continents.”

By the time I reached Thingvellir National Park, it was still raining, growing darker by the minute, and the 25 mph speed limit down the long road through the park wasn’t helping. By the time I reached “the walk between the two continents,” I was close to running out of daylight, but more importantly, I had flat run out of steam. I arrived at the parking lot which required a $7 parking fee, got back into the car and said, “I’ll catch it next time.”

I knew it was a risk leaving the big attraction for the last day, but given the choice of a lackluster finish versus cutting out some of the other less crowded, equally spectacular attractions along the way, it was a risk I am glad I took. As for whether saving the Golden Circle for last was the best strategy, I think that all depends on what one values in a destination, and how much time they are willing or able to spend to get there.

Next up…One last post on Iceland as I say my goodbyes while sailing into the sunset.

22 thoughts on “Iceland’s Golden Circle: Last but not Least?”