This past summer when I booked my flight to Iceland, I wasn’t sure how long I would stay, or even if I would be returning from Reykjavik. My airline ticket would have been $400 one way, or $450 round trip. So while I originally intended to just book a one way ticket and see where I ended up, my pandemic paranoia got the better of me. What if all hell locked down, and I had to get out of there? Airfares would likely triple. So as an “insurance policy,” I bought a round trip ticket with the hopes that I didn’t have to use the return. It seemed like a worthwhile gamble either way.

When doing research on potential destinations once I left Iceland, the ferry kept popping up. How cool would that be to leave Iceland by ferry? Cruising out of the Seydisfjördur fjord just sounded so much more intriguing than a Delta flight back to Newark.

But this would mean backtracking from Reykjavik where I had to return the camper van, to the port of Seydisfjördur on the east coast of Iceland. There was really no other option but to fly from the domestic airport, an experience worthy of a blog post in its own right. How many years has it been since you boarded a flight with no type of TSA security check? 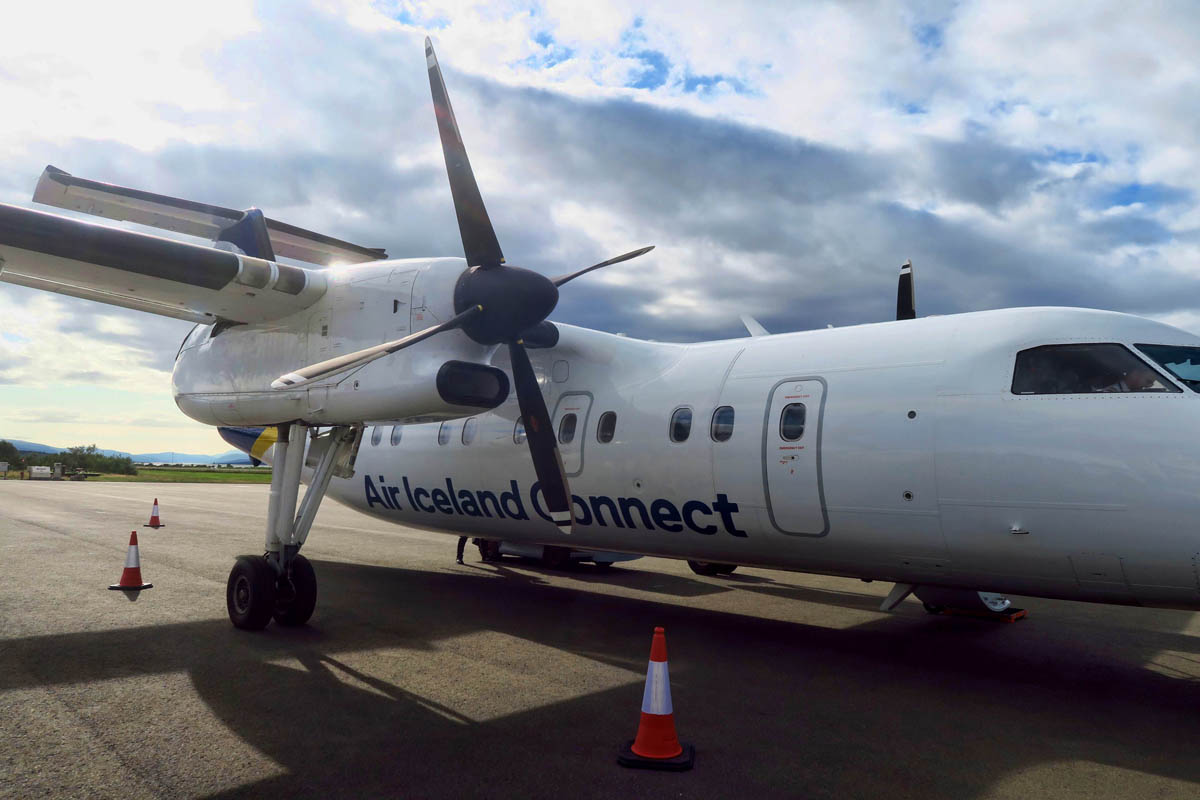 The IcelandAir domestic flight from Reykjavik to Egilsstadir was $117, and included one checked bag. Not bad… 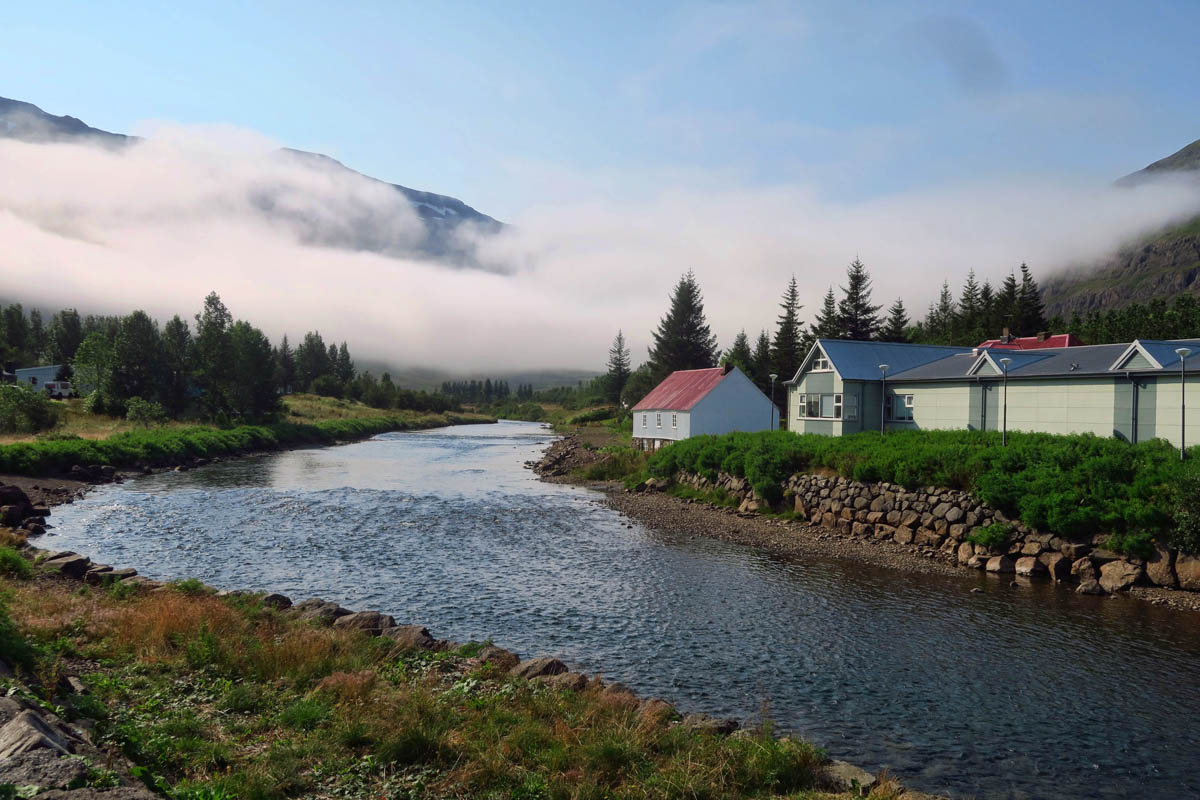 Coming over the foggy Fjarðarheiði mountain pass
from Egilsstadir into Seydisfjördur was one of the most scenic drives I had seen in Iceland. Maybe it was because I wasn’t driving, and was able to watch the scenery instead of the road. 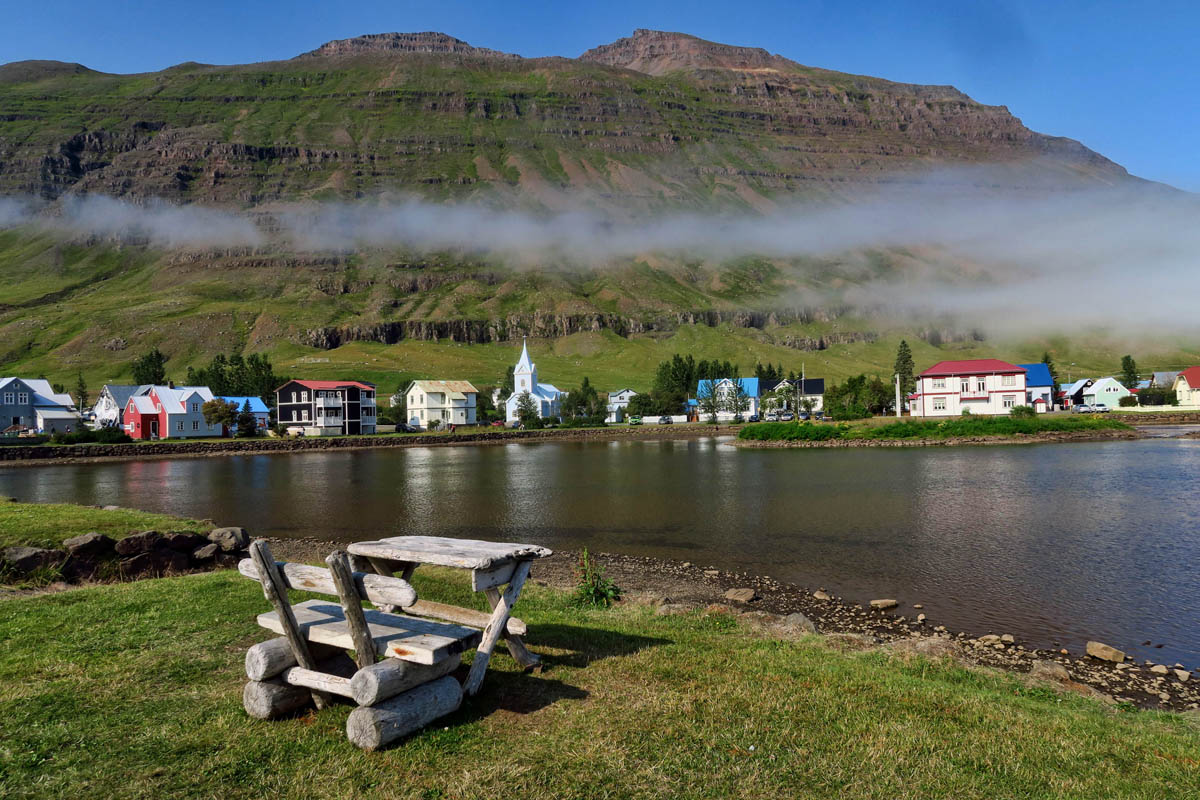 The little town of Seydisfjördur which surrounds a lake with a mountain backdrop is indeed picturesque. 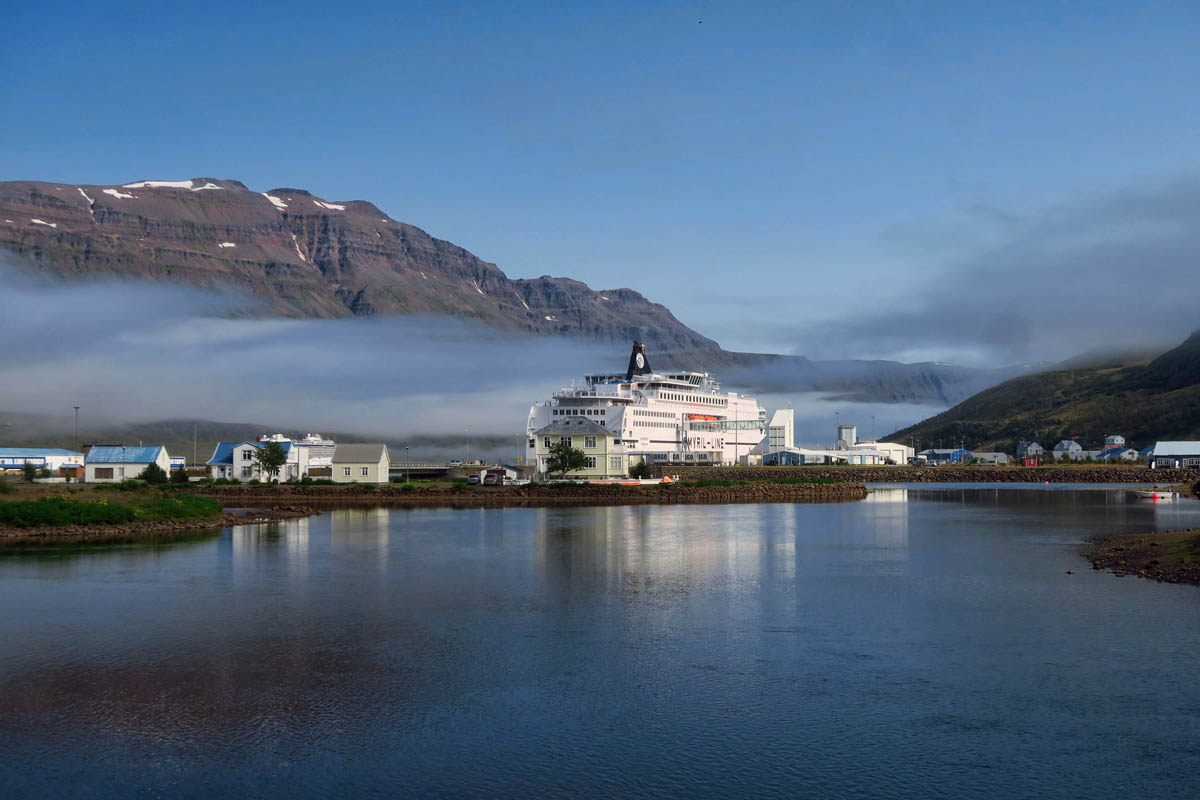 Not only is Seydisfjördur centered around a small lake, but it sits at the mouth of the fjord. 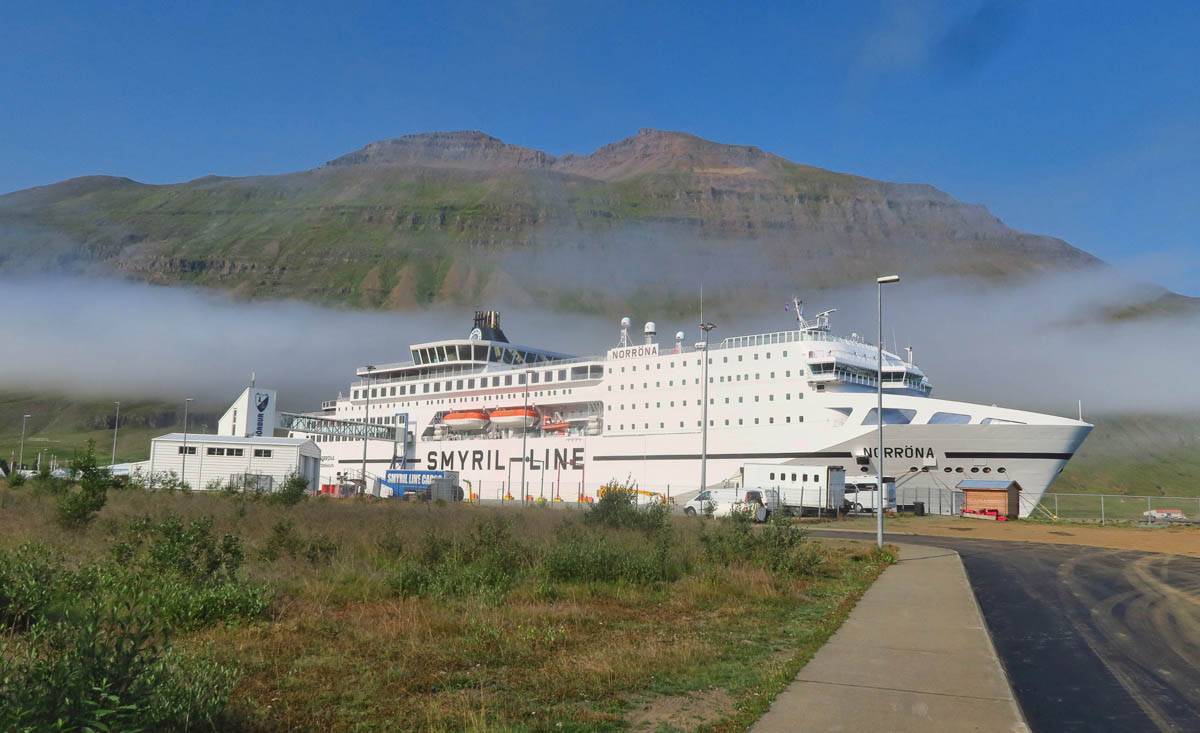 Being the far eastern port of Iceland, it is not only the berth for Smyril Line Ferry, but also a port of call for Viking Cruise ships. 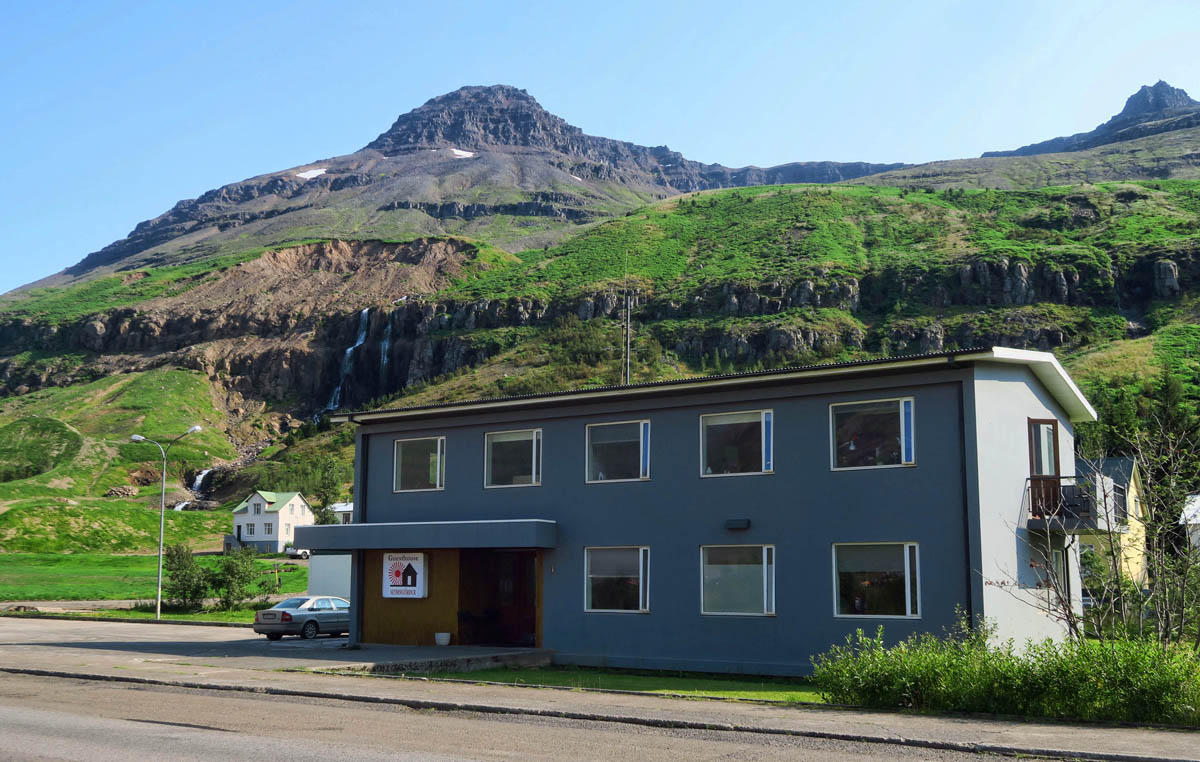 While it doesn’t look like much from the outside, the Seydisfjördur Guesthouse was one of the nicest guesthouses I have stayed in. It was absolutely spotless, as well as being comfortable and convenient. 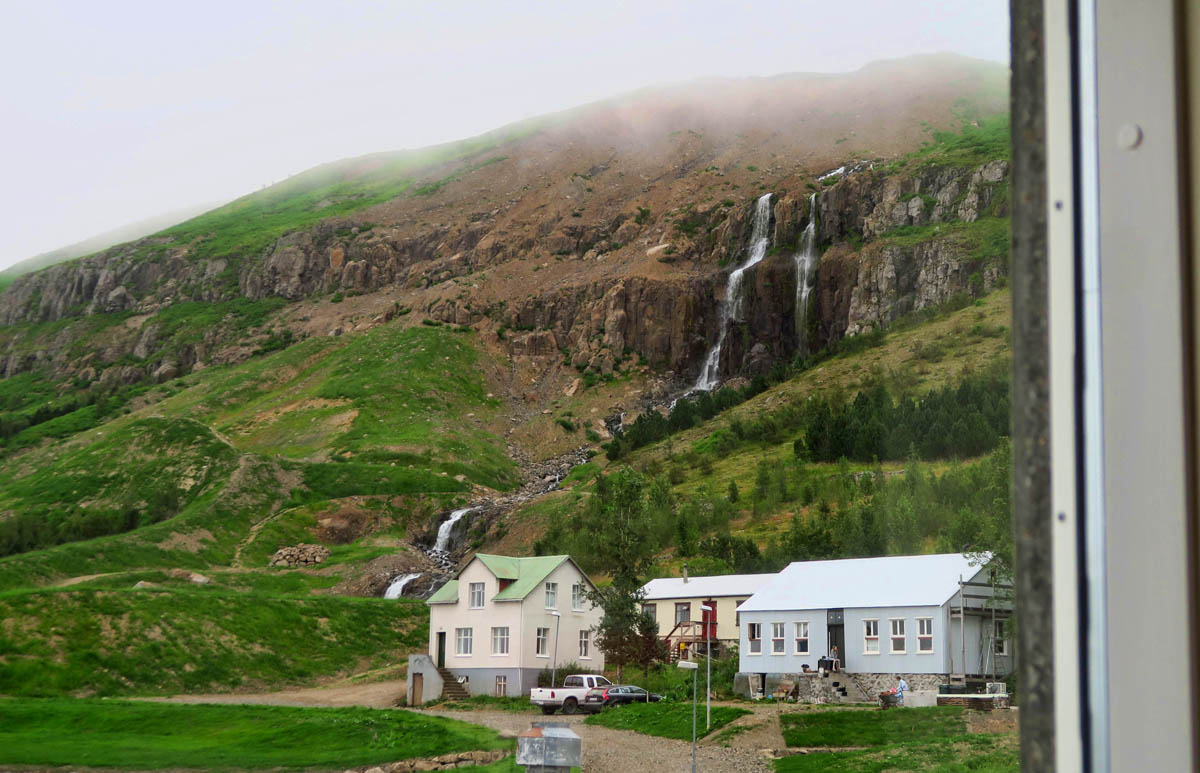 This was my view from the window of my room in the Seydisfjördur Guesthouse. I had a corner room, with the other window overlooking the ferry dock just across the road.

Now that I am retired, I am enjoying the pleasures of open-ended travel with no particular destination in mind….or rather many destinations dancing in my head like sugarplums, but no definite plans. With the Winnie is safely parked up back on the family farm, and my brother is visiting with my Mom for now, I’ve got nothing to tie me down. It’s my ultimate definition of “freedom.”

With one exception, that is….the COVID curse. Each country has its own set of rules, with varying levels of lockdown. Navigating borders during this time is worse than the strictest of visa restrictions. Some countries want entry forms for tracking. Some want QR codes. Some require a negative COVID test, while others expect you to have a digital COVID passport. Most use the “stoplight” system to determine who can enter from which color-coded country, but it changes almost as fast as the traffic lights for which the system is named.

So I set my intentions for this trip….I would keep traveling for a while until I was stopped by COVID restrictions, or I was needed back home. Most countries in the European Union have strict protocols for mask wearing and vaccination acceptance, so I have actually felt safer traveling internationally than I do in my native state of Texas where they are dropping like flies, yet you can’t give the vaccine away with a million dollar lottery ticket. 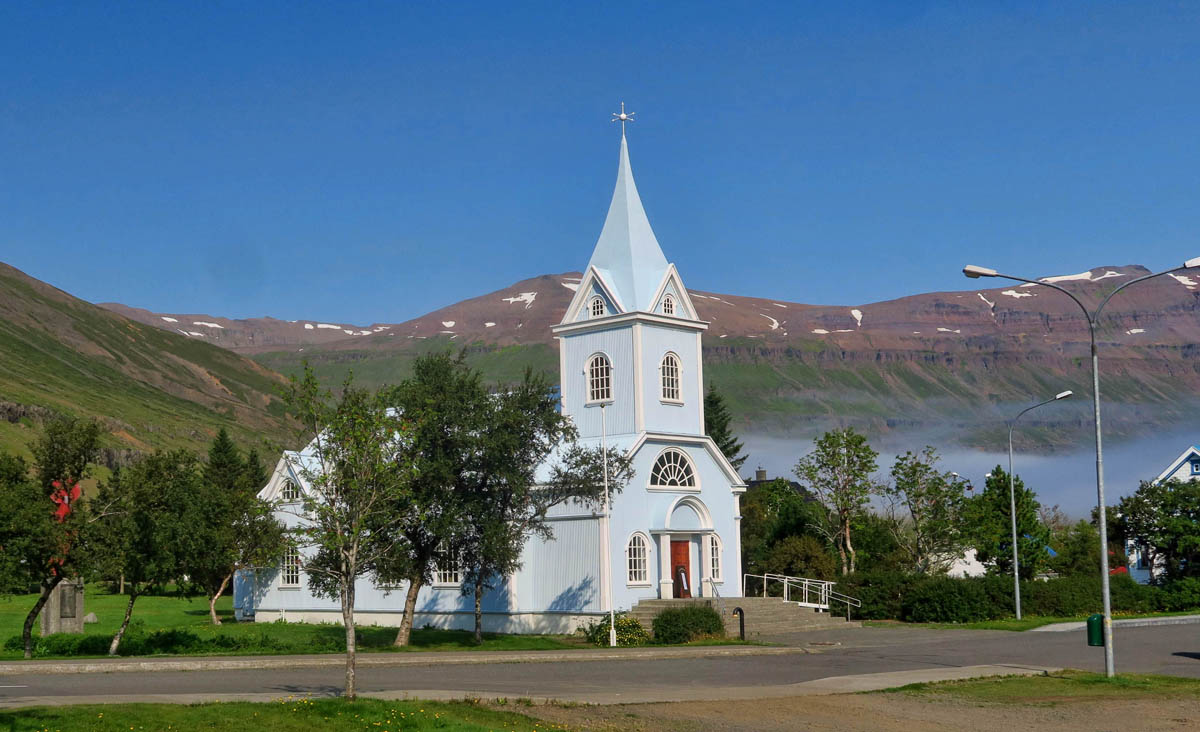 While Seydisfjördur was once a prominent fishing town, it’s noteworthy wooden buildings left over from a Norwegian fishing settlement, the fishing industry dried up and the town turned to tourism. 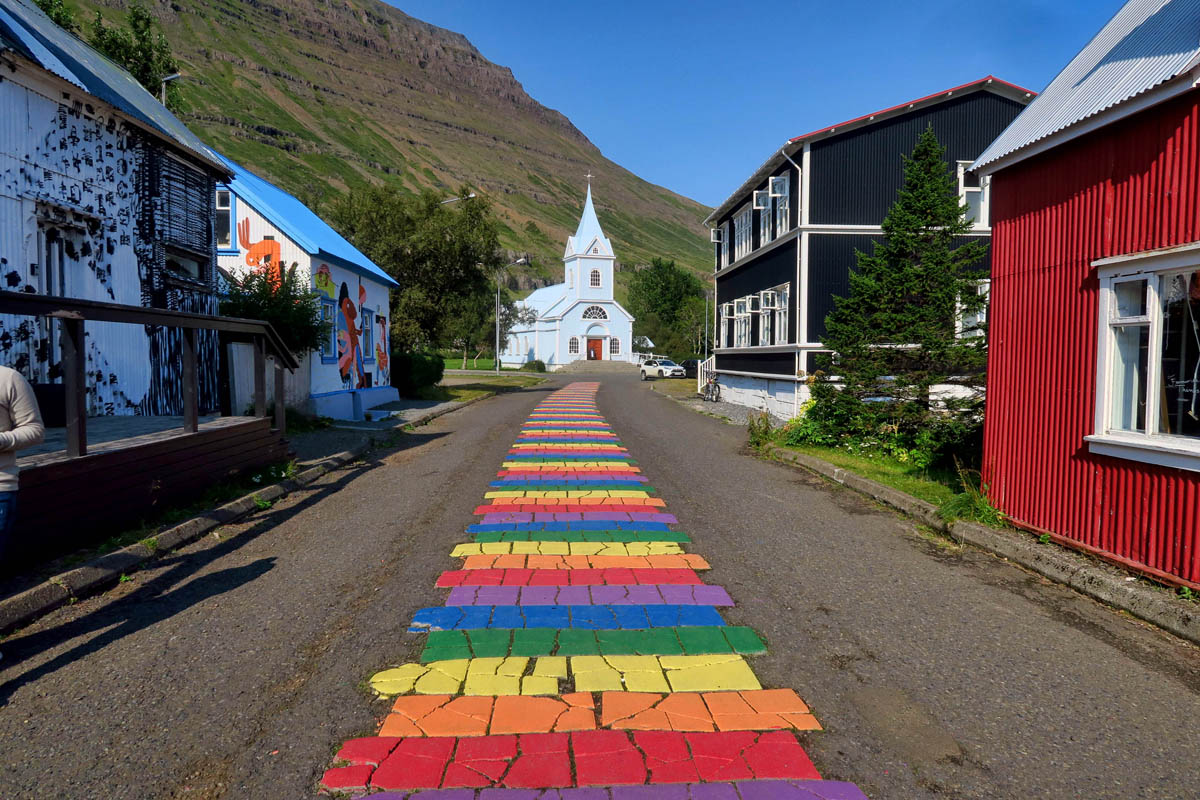 This is now one of the major attractions in Seydisfjördur. Clever way to compete for the tourist dollars with a scene that looks good on Instagram. 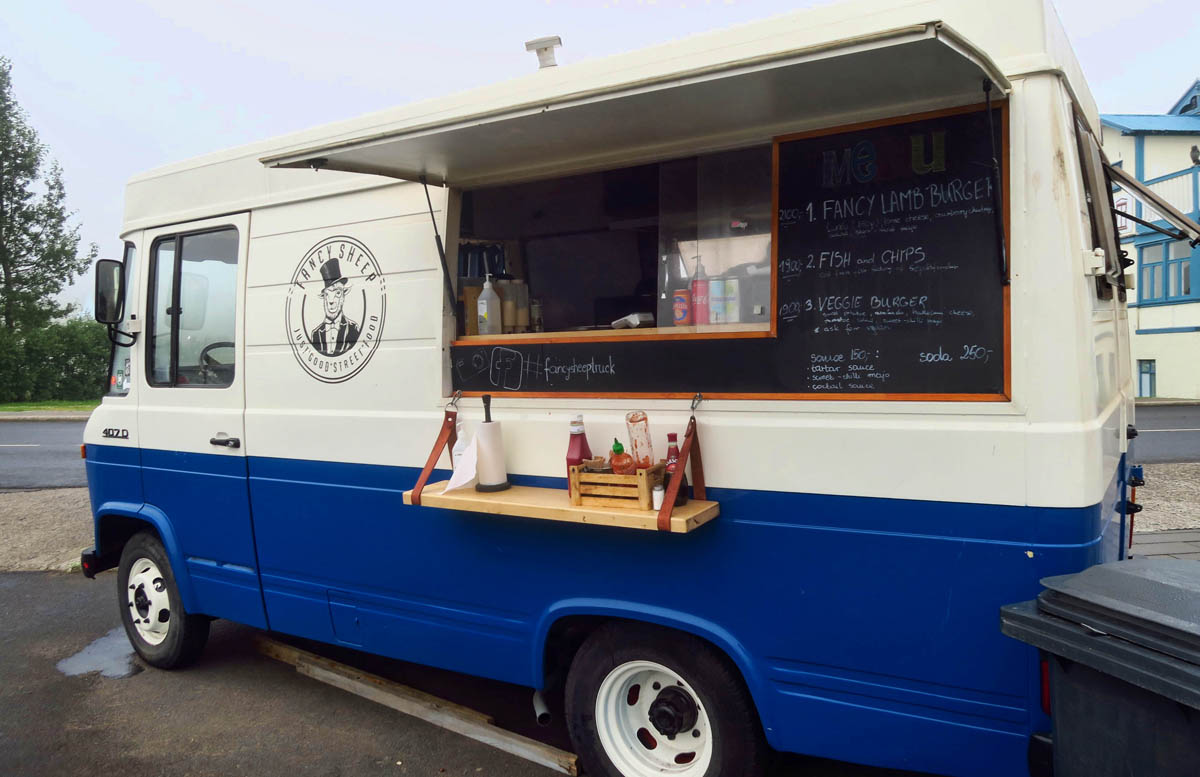 This here is the “Fancy Sheep,” one of the best food trucks I have yet to visit. They only do three things, and they do them well. A Fancy Lamb Burger, a Veggie Burger, and Fish and Chips. 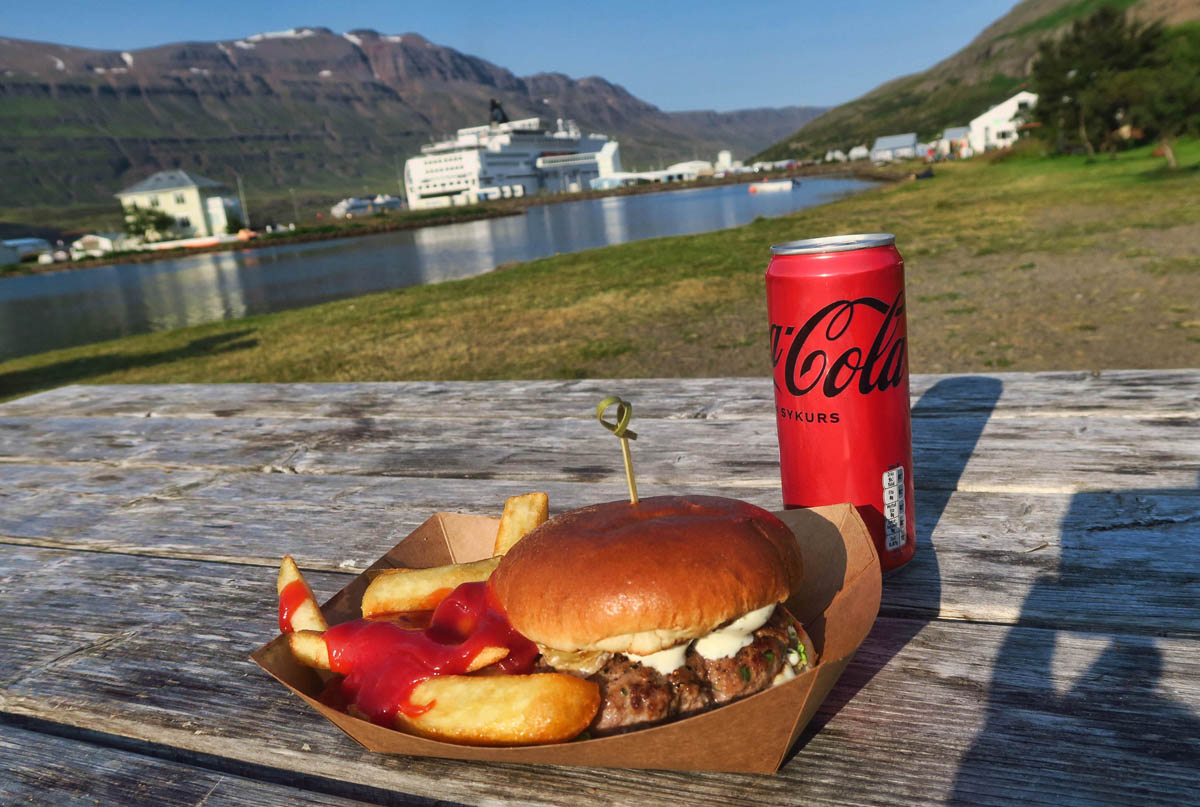 Their Fancy Lamb Burger was the best lamb burger I have tasted. Lamb patty, melted brie cheese, pickled onions and cranberry chutney dressed with mint mayo. It was so good, I went back for dinner before my 8pm ferry departure.

So once I got back to Reykjavik where I returned my CampEasy camper van without a scratch, thankfully, I set my sights on Seydisfjördur, departure port for the Smyril Line ferry. I would sail off the edge of Iceland, through the fjord for which the town was named, and onward through the North Atlantic Ocean.

Seydisfjördur ended up being my favorite town in Iceland, not only because of its quaint charm, but also because it was the only town outside of Reykjavik I could pronounce.  My flight actually landed in Egilsstadir, 18km (11 miles) inland.  The “bus” ride (converted Sprinter van shuttle) alongside lakes and waterfalls, ascending up and over the foggy mountain pass added to the ethereal ambiance of the tiny town. It made for the perfect ending for such an incredible exploration of Mother Nature’s Icelandic playground.

I feel like my next destination on the Smyril Line ferry requires a bit of explanation, so stay tuned for the next post… 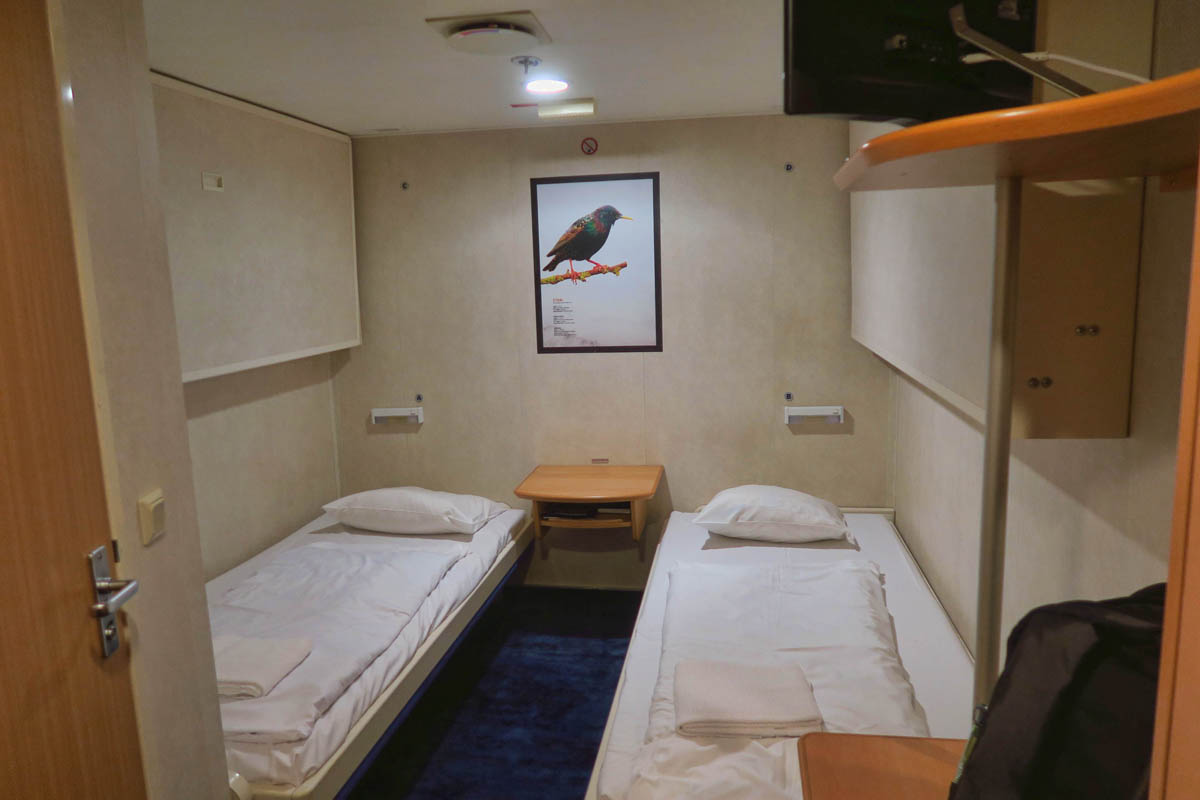 My inside cabin in the Smyril Line Ferry. Nice to have my own cubicle during COVID times. 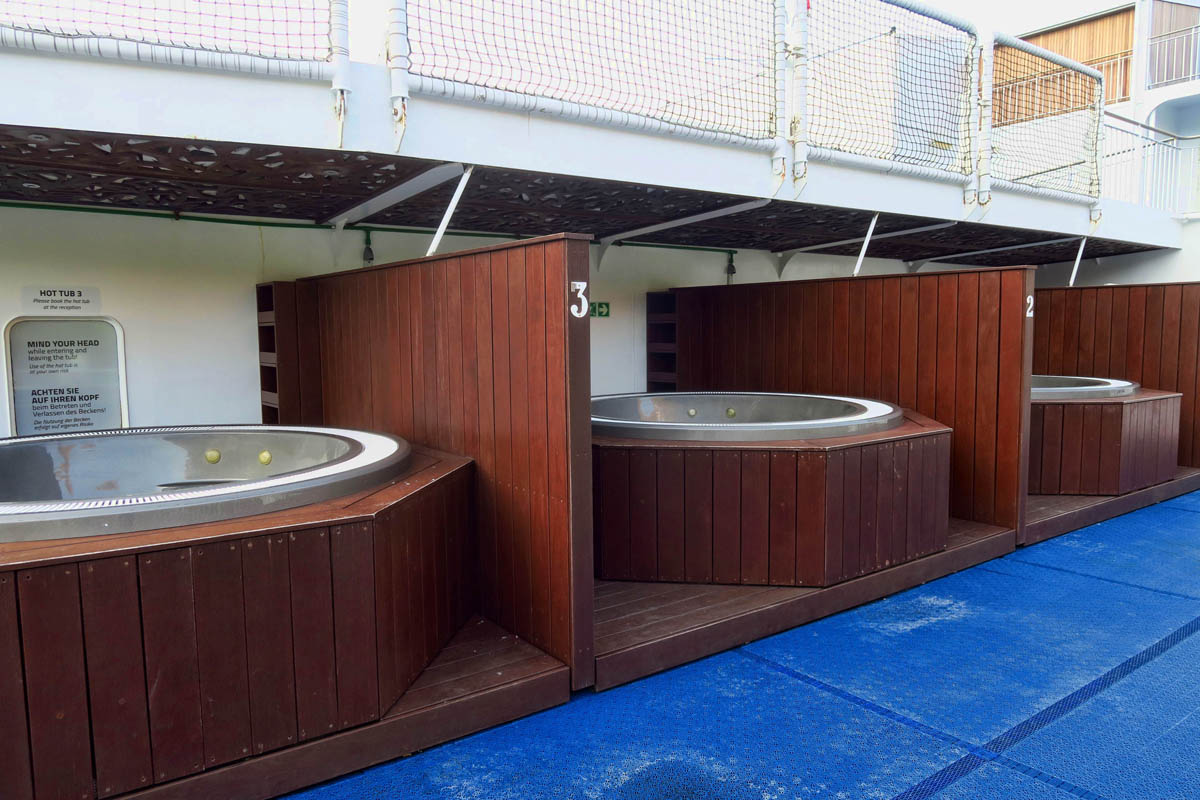 In better days, this ferry doubles as a cruise ship, complete with hot tubs. 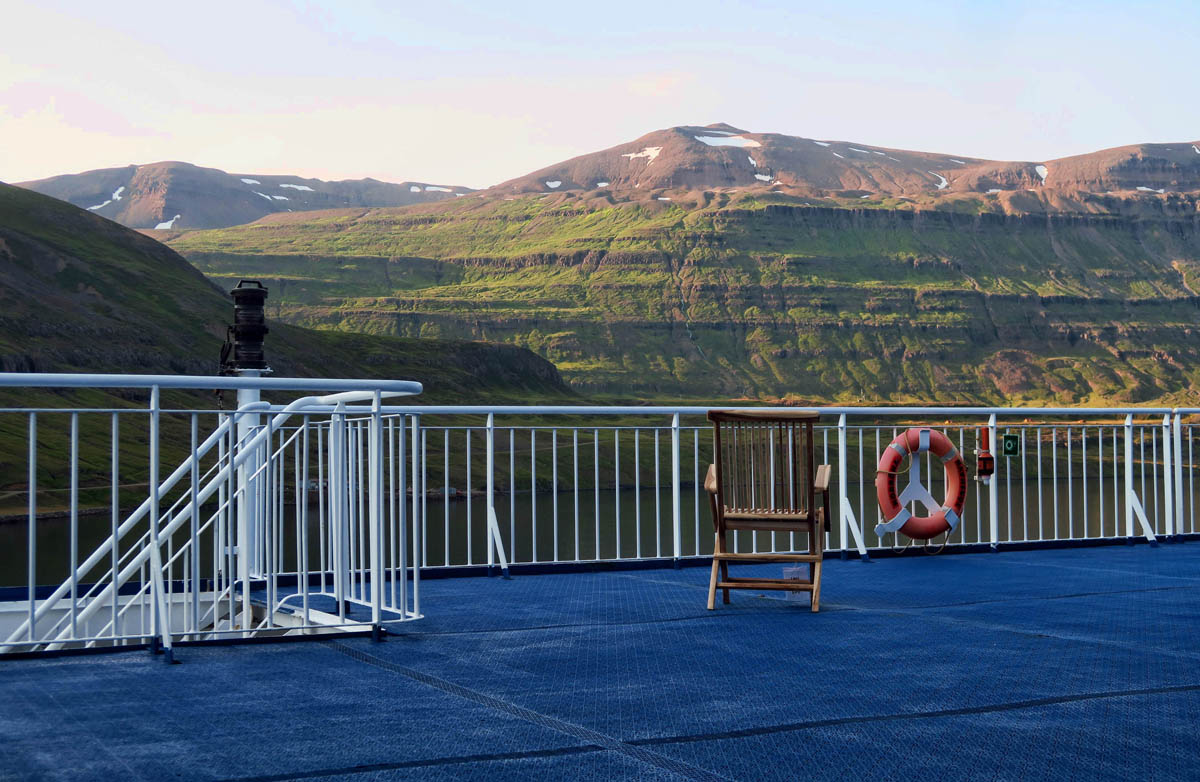 Doesn’t take much to rearrange the deck chairs on this ship. 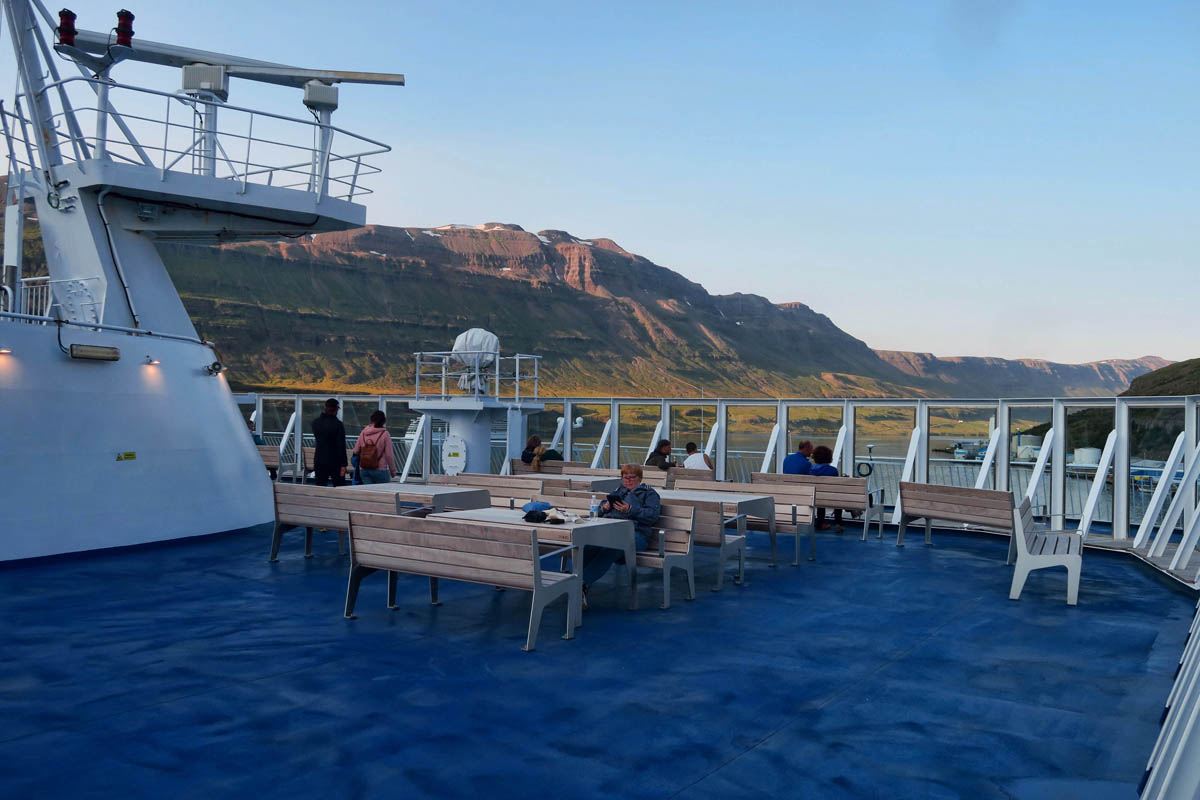 However, there is a nice outdoor seating area behind the plexiglass wind shield. While it’s just a lovely night, it’s about to get chilly pretty quickly. 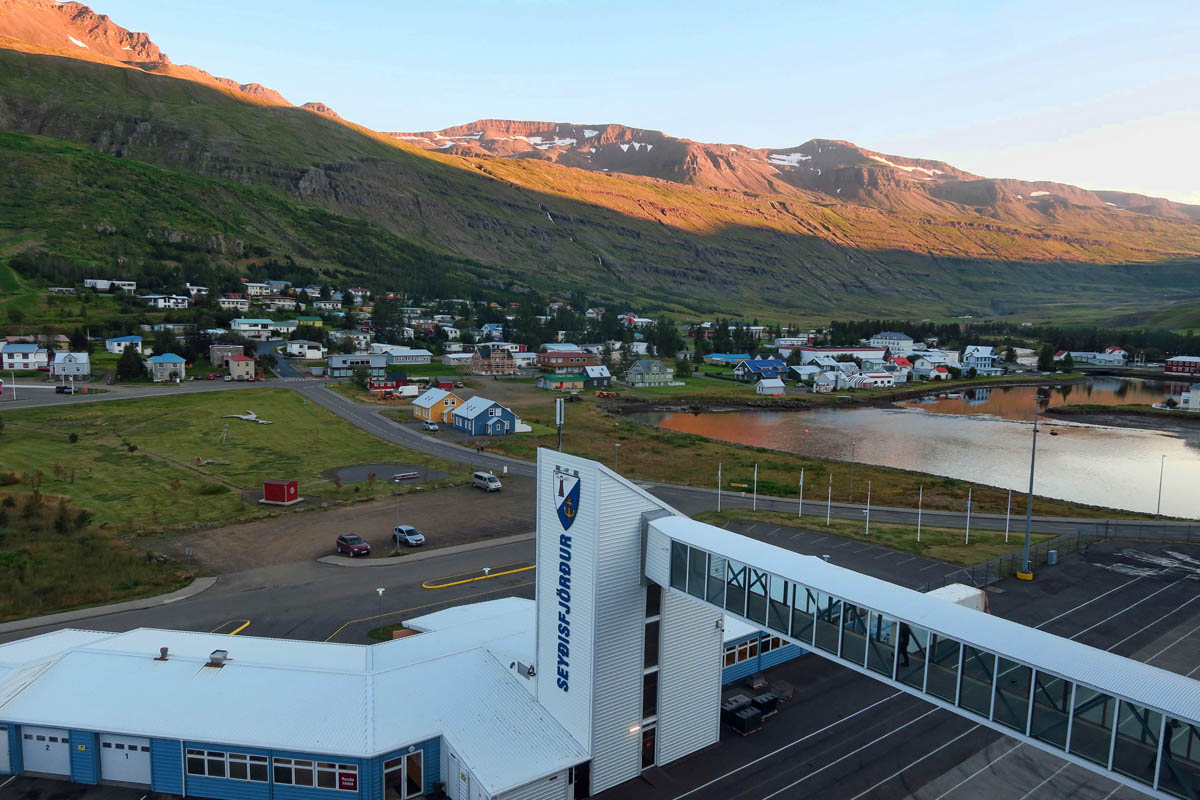 Leaving the Seydisfjördur dock behind. 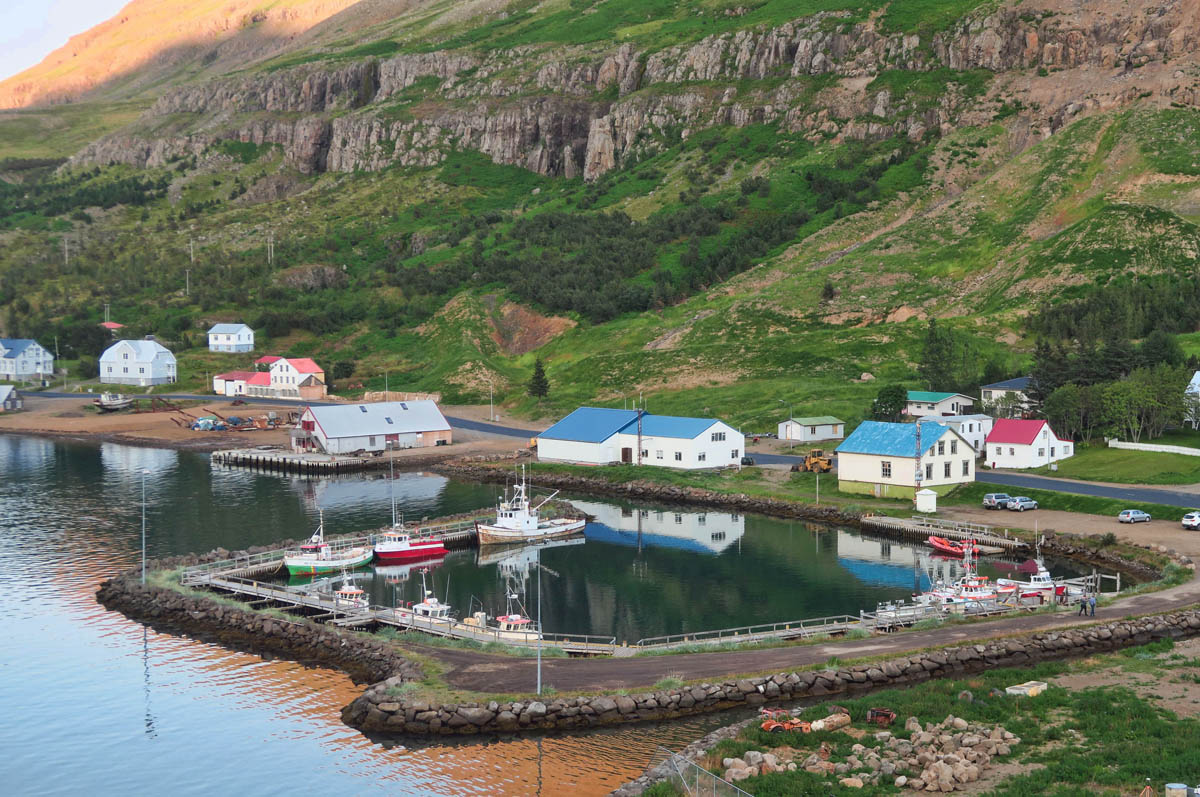 My last day in Iceland was one of the best as far as weather. 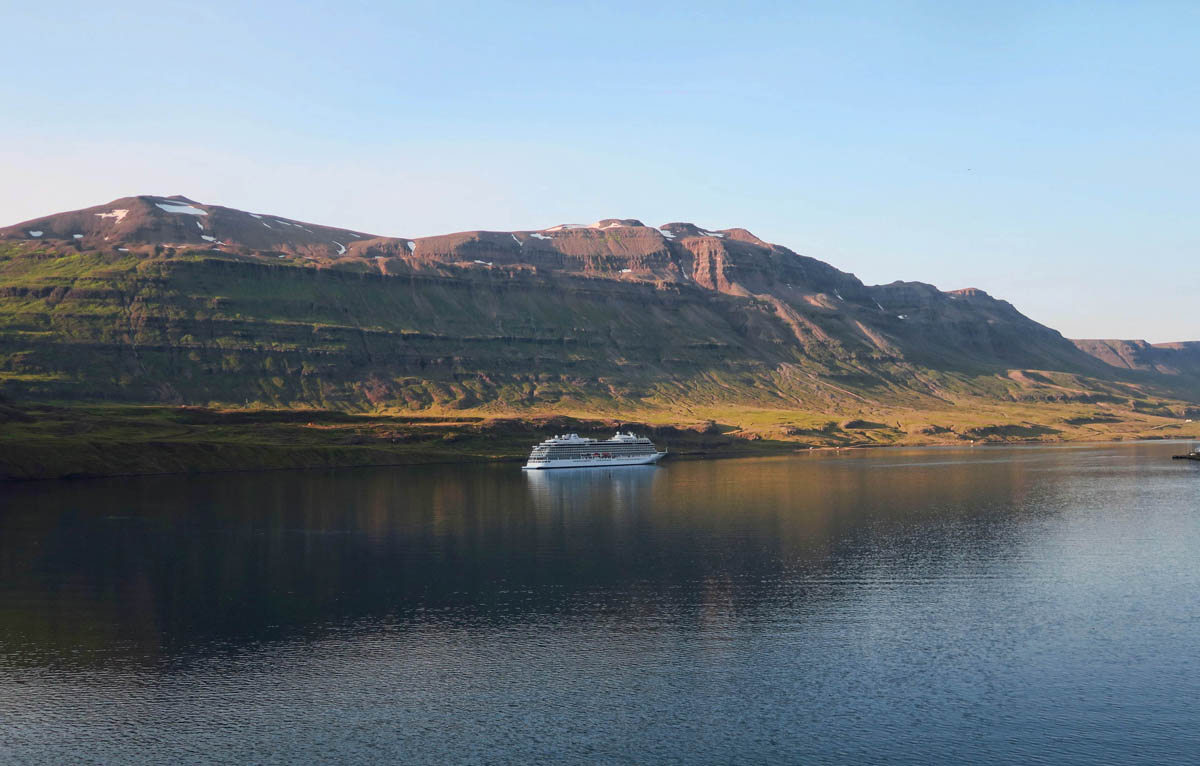 We pass one of the Viking Cruise Ships as we travel through the fjord. 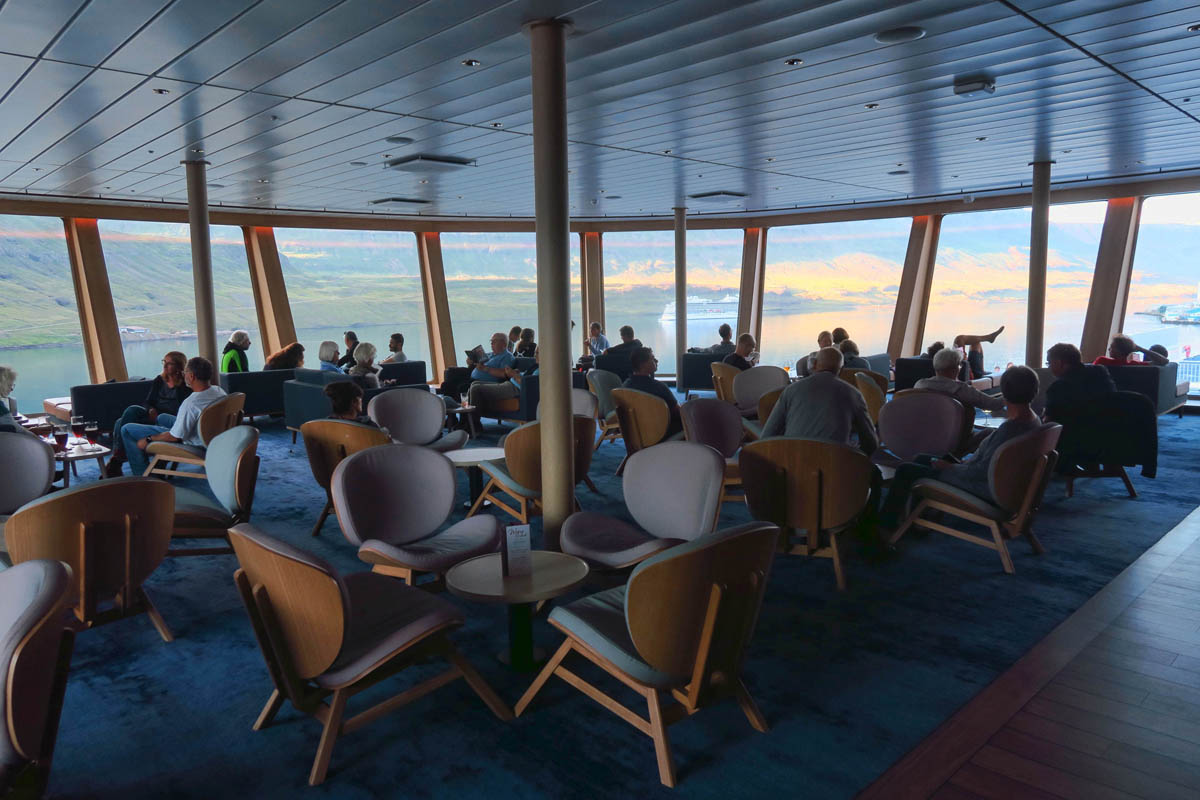 Touring inside the ship, there is a nice bar on the observation deck with Happy Hour specials. It seems a bit risky these days, but the ferry is not crowded. 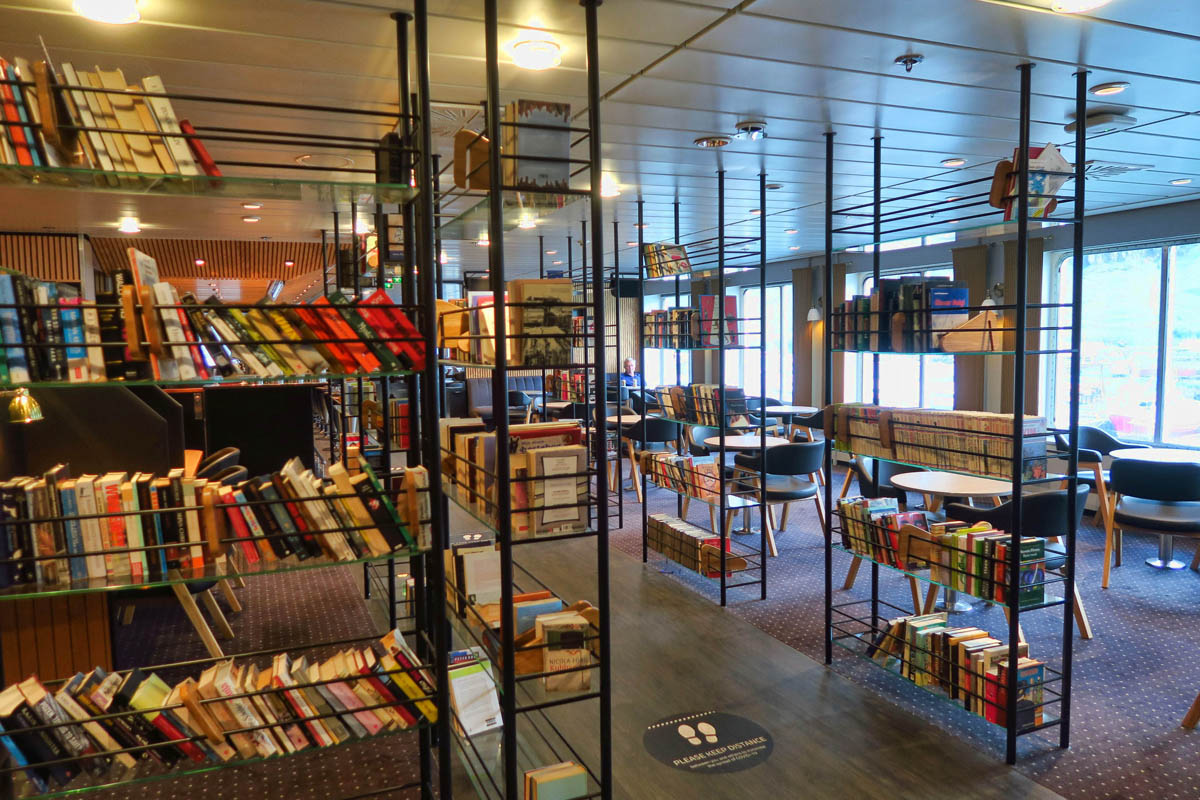 Lots of public areas to spread out, including this nice little library with the motto posted overhead, “Learn something new the old way.” 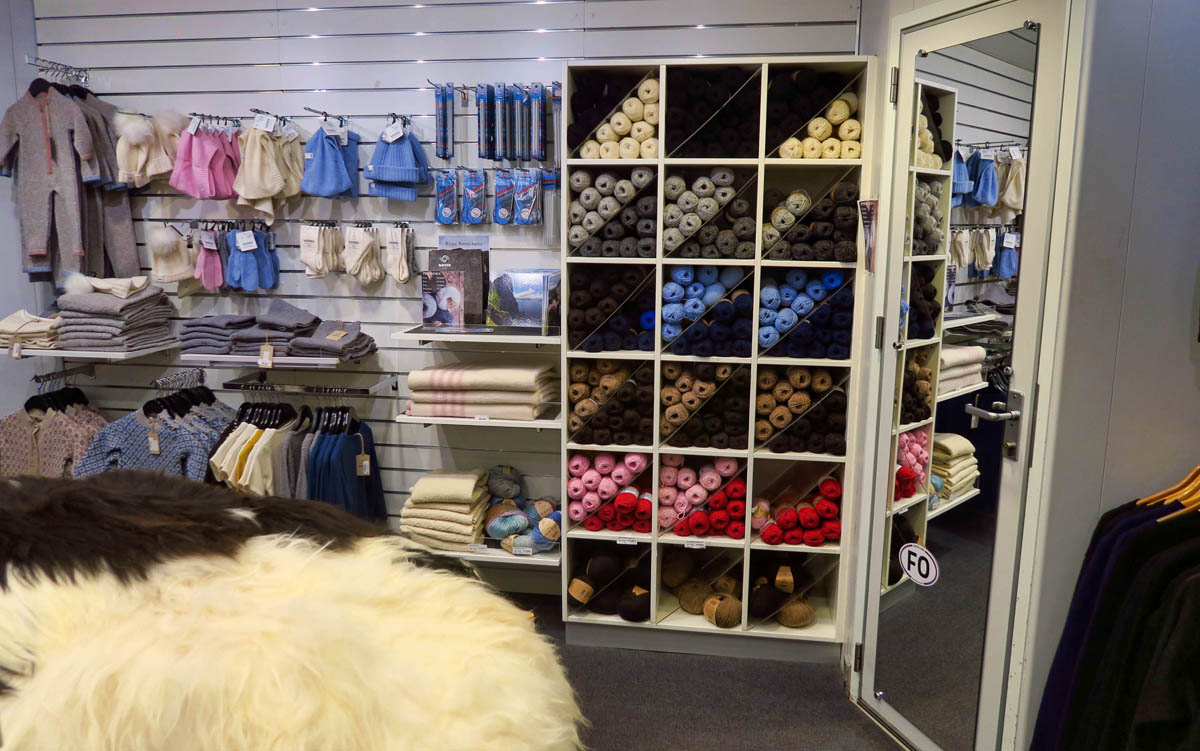 The ferry had one of the largest Duty Free shops I have seen on a ship, featuring a lot of local wool products, should you fancy knitting while at sea. 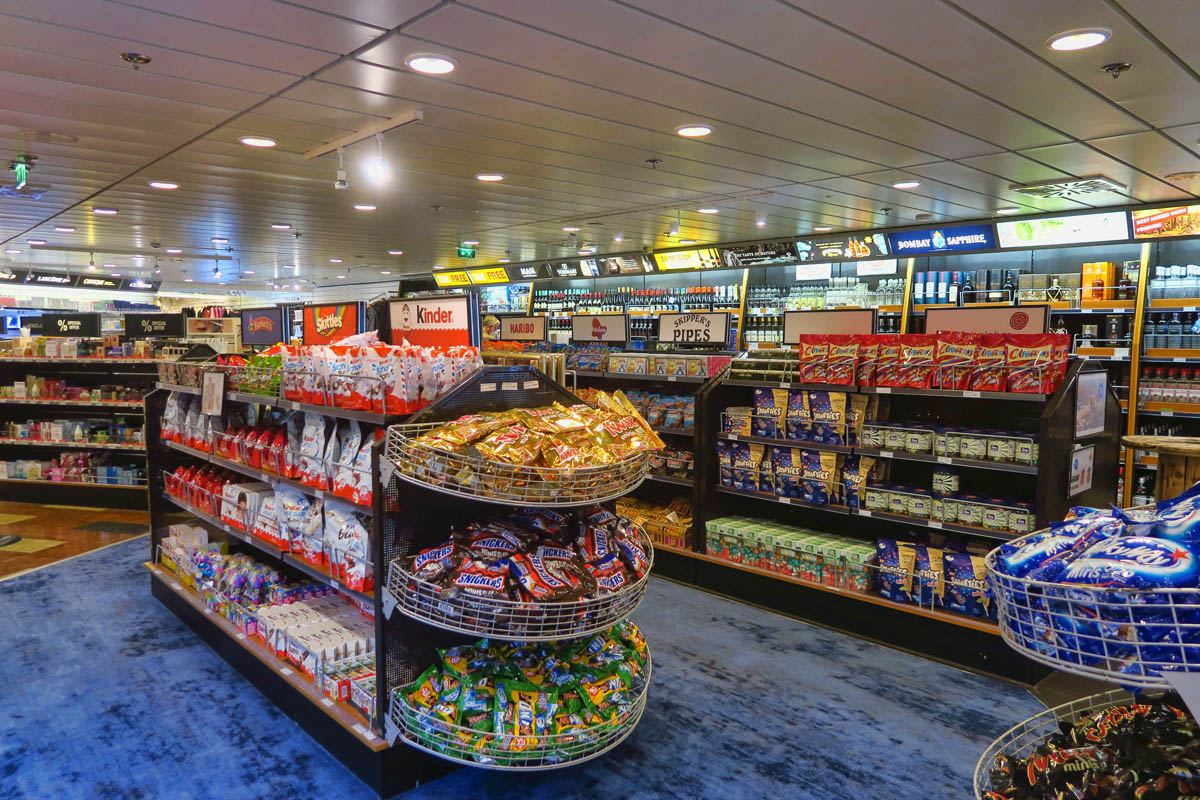 They also do a huge business selling liquor, wine, and snacks. 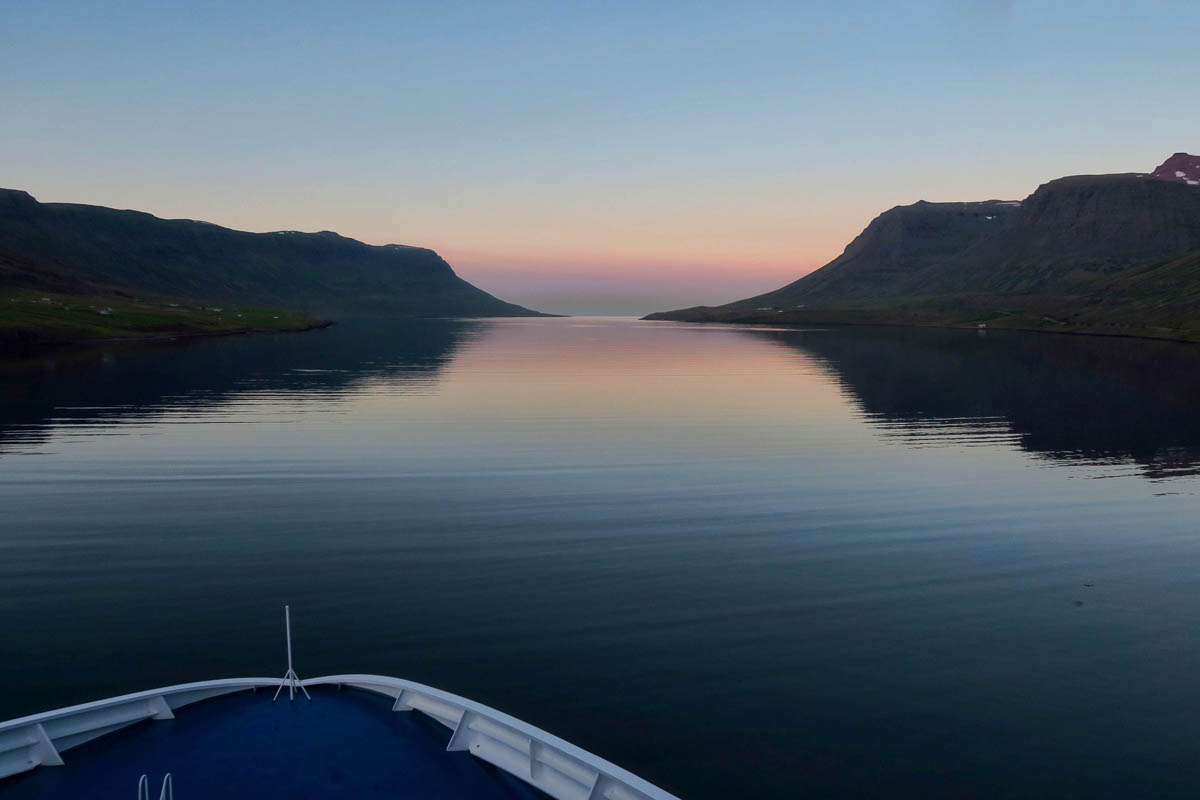 Sailing through the fjord, it looks like we are sailing into infinity 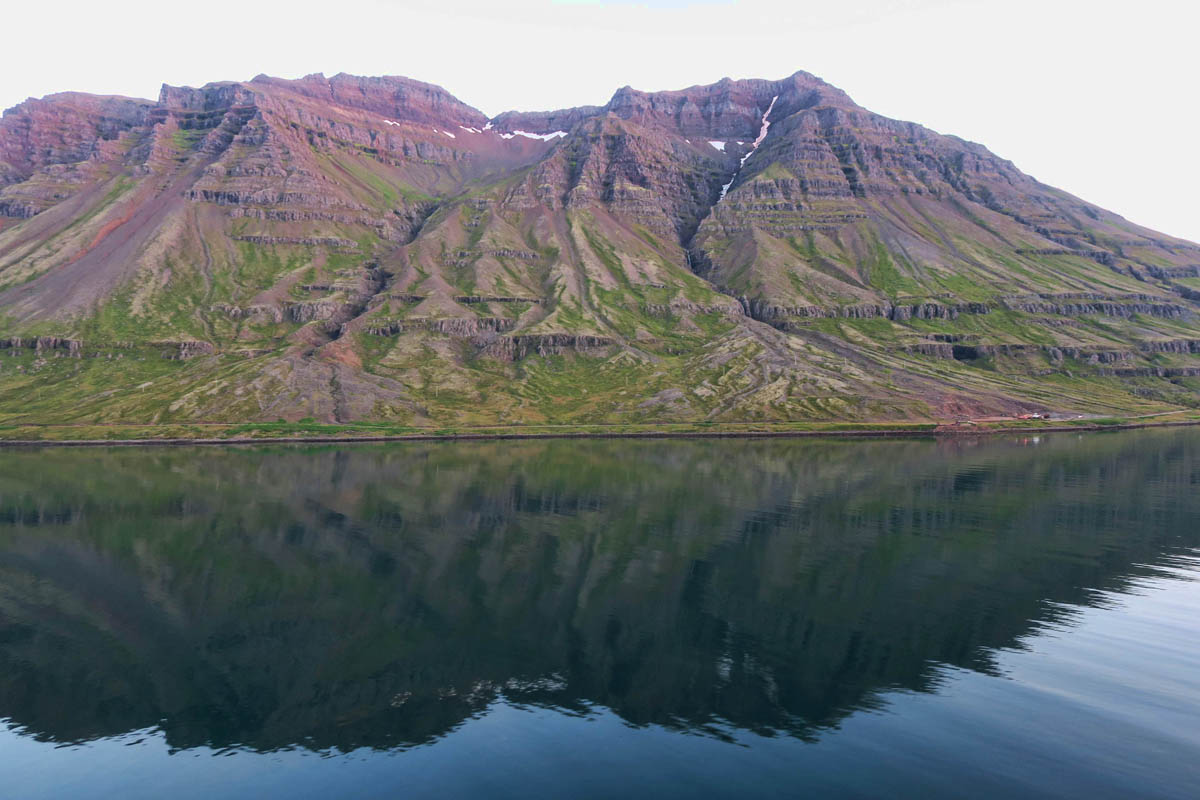 It’s such a lovely, calm night, and a lot of passengers are out on deck enjoying the fjord passage. 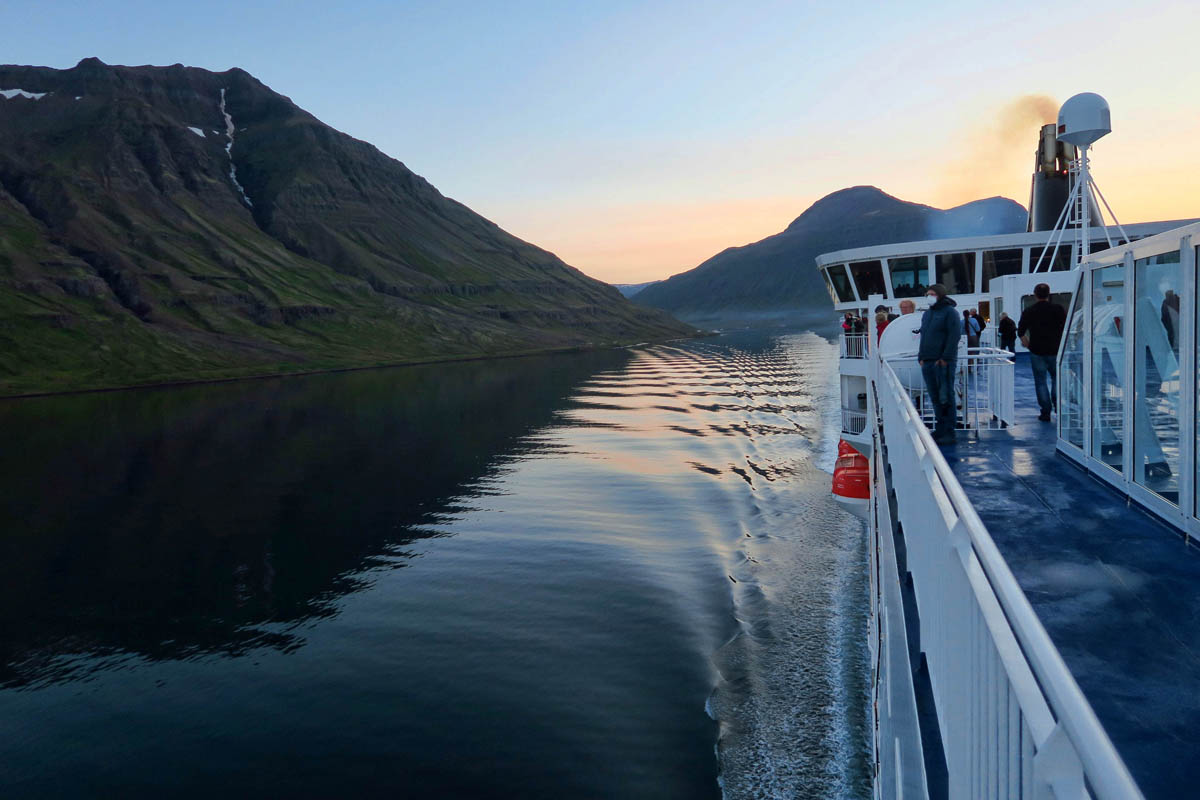 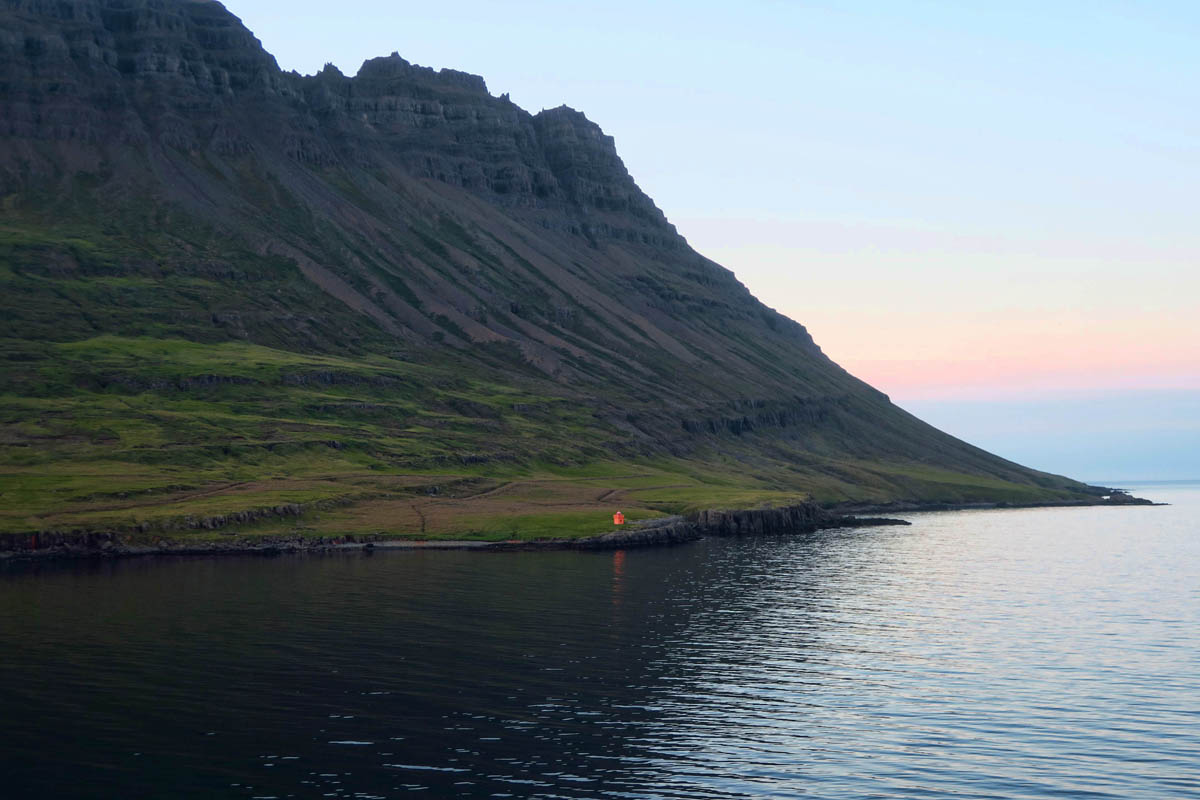 As we approach the mouth of the fjord to enter the North Atlantic, it’s getting quite cold up on deck, but I am bundled up to see the little orange lighthouses marking the entrance to the fjord. 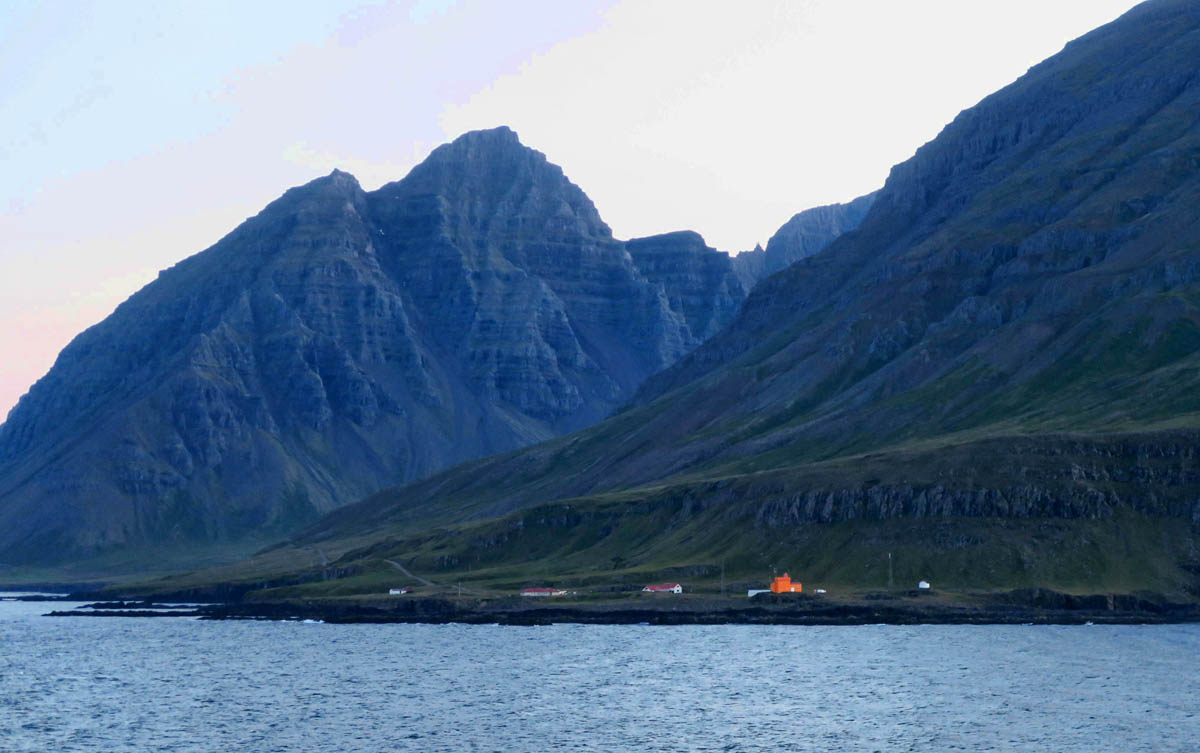 My last look at Iceland as we head out to sea…

11 thoughts on “Sailing Out of Seydisfjördur”