While it’s possible to explore the Faroe Islands by making Torshavn a base for day trips, this would also mean spending a good bit of the day in the car, backtracking along the narrow, winding roads. My time in the Faroe Islands occurred over the last week of August and first of September. That far north, days begin to get shorter at a much more rapid pace than they do further south, so I didn’t want to spend precious daylight hours commuting back and forth. Instead, I decided to spread out my visit staying on a few different islands.

Travel by public transportation around the Faroes is sporadic and infrequent, so it’s really best to rent a car. For those who might be planning a visit, it’s essential to do this in advance, particularly during the summer months as there is a limited supply of rentals on the islands.

One of the top attractions in the Faroe Islands is the tiny island of Mykines, the westernmost island on the archipelago chain. (Believe it or not, that’s pronounced “MITCH-e-nes.”) There are only two ways to reach this tiny remote island, either by boat or by helicopter. The public passenger-only ferry typically makes two runs per day, one at 10:20am with a return, and another at 4:30pm with a return, carrying about 80 passengers. The ferry only runs from the 1st of May through the 31st August, leaving the island accessible the rest of the year by helicopter only, and that’s only when weather permits.

Helicopter service is prevalent throughout the Faroe Islands, being a common venue for locals to commute from island to island. For this reason, it is subsidized by the government, making it very affordable. Given the low prices, it would be quite the tourist draw, however, restrictions make it known that the flights are not for sightseeing. Locals get first priority for boarding, and can “bump” a tourist if a local needs a seat, or if supplies are needed. Also, when traveling to a place like Mykines, one can only confirm a one way ticket so as to discourage using it for cheap sightseeing tours.

The island ranks 13th out of 18 islands in size, and only has about 10 permanent residents. Although there are about 40 houses in the village, only six of these are inhabited year round. 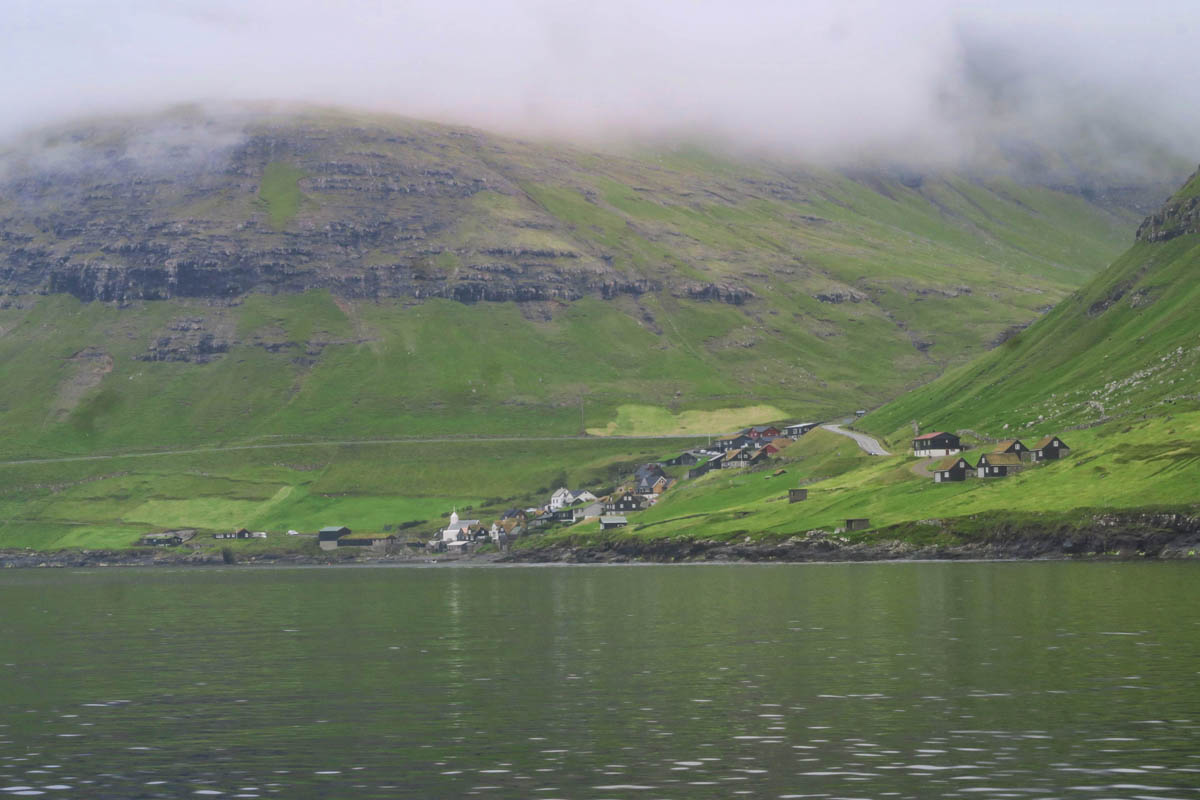 The ferry ride from the village of Sørvágur on the island of Vágar to the island of Mykines is beautiful in the misty shrouds of fog. 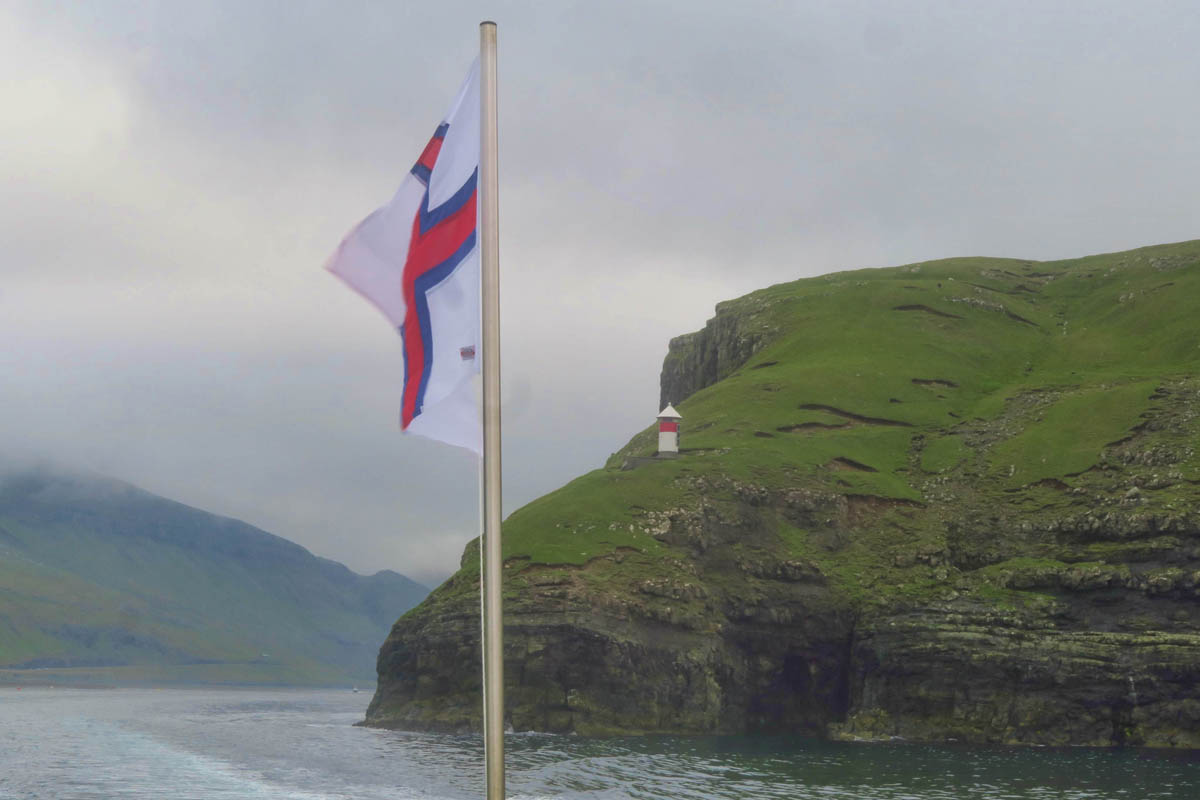 Leaving the island of Vágar with its adorable tiny lighthouse behind. 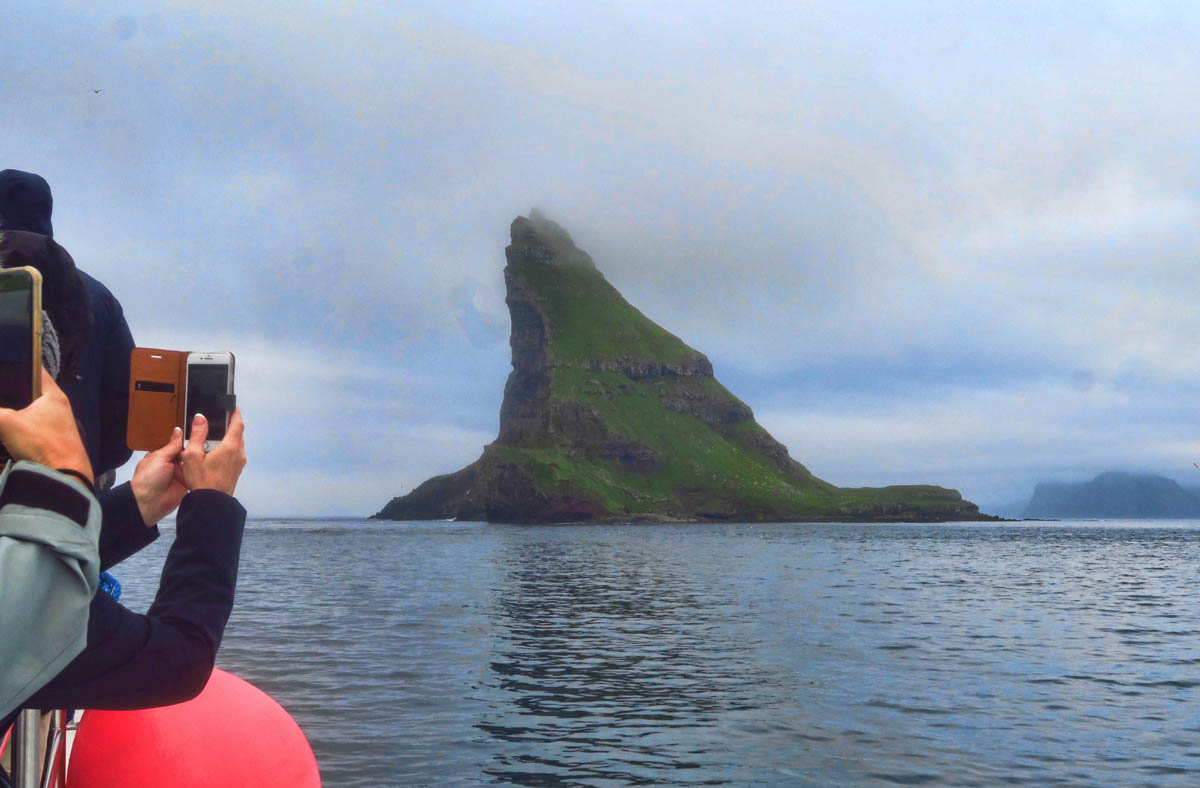 Cruising along the many sea stack formations was worth the ferry ride alone. 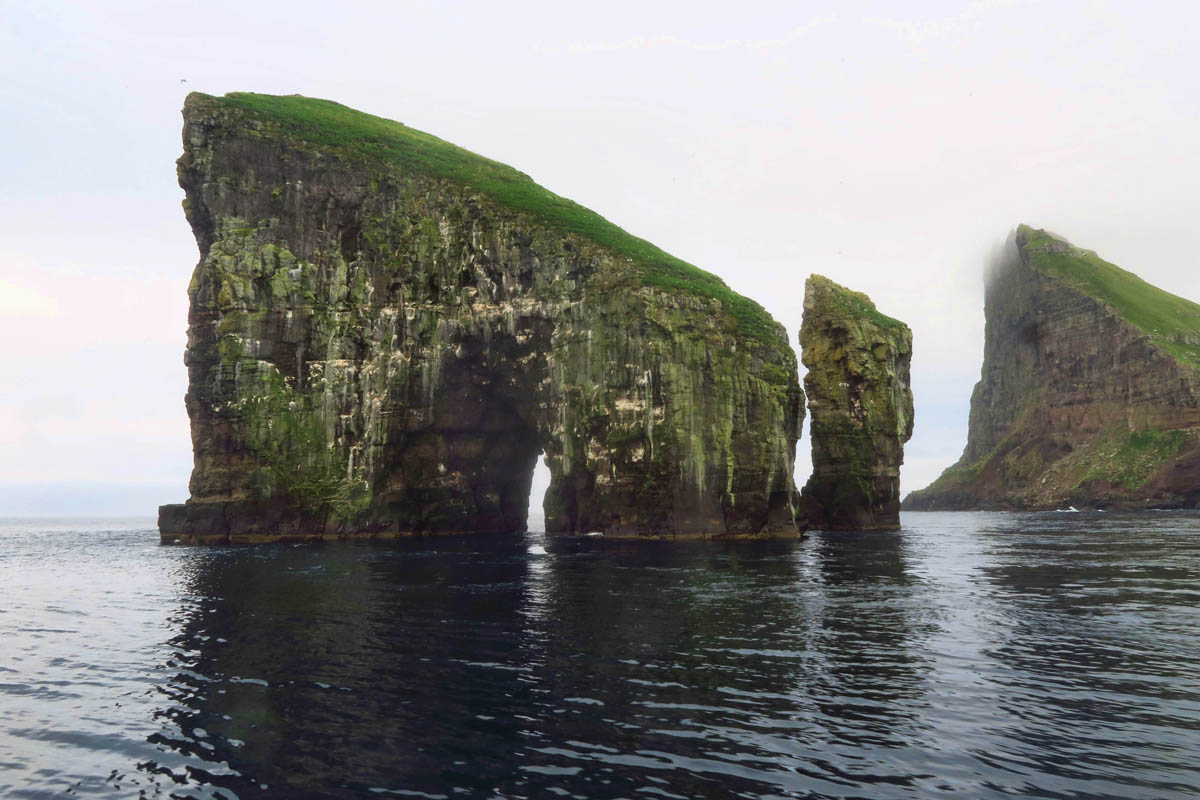 This is Drangarnir, reached only by boat or 7 hr RT hike. Likely the most photographed feature in the Faroe Islands. 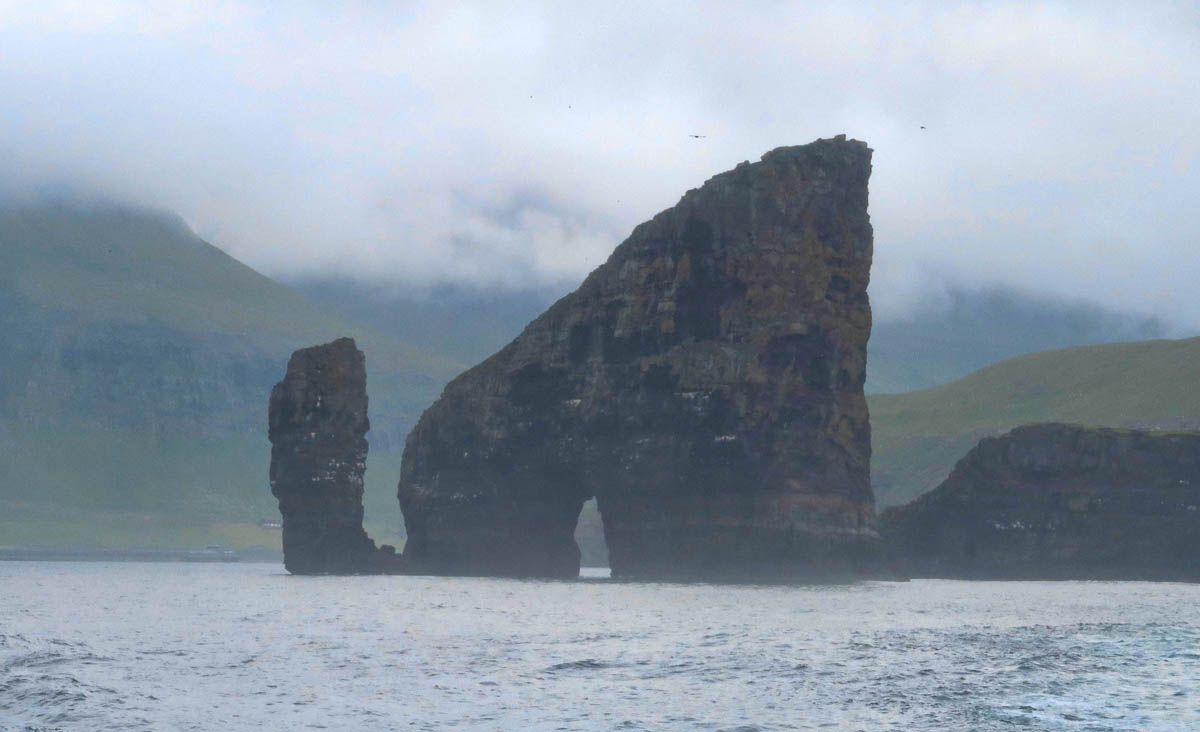 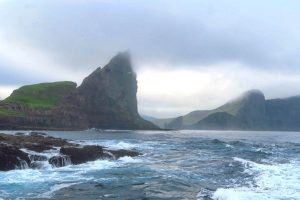 The coastline of Mykines is quite rugged, with only one port for a boat dock. 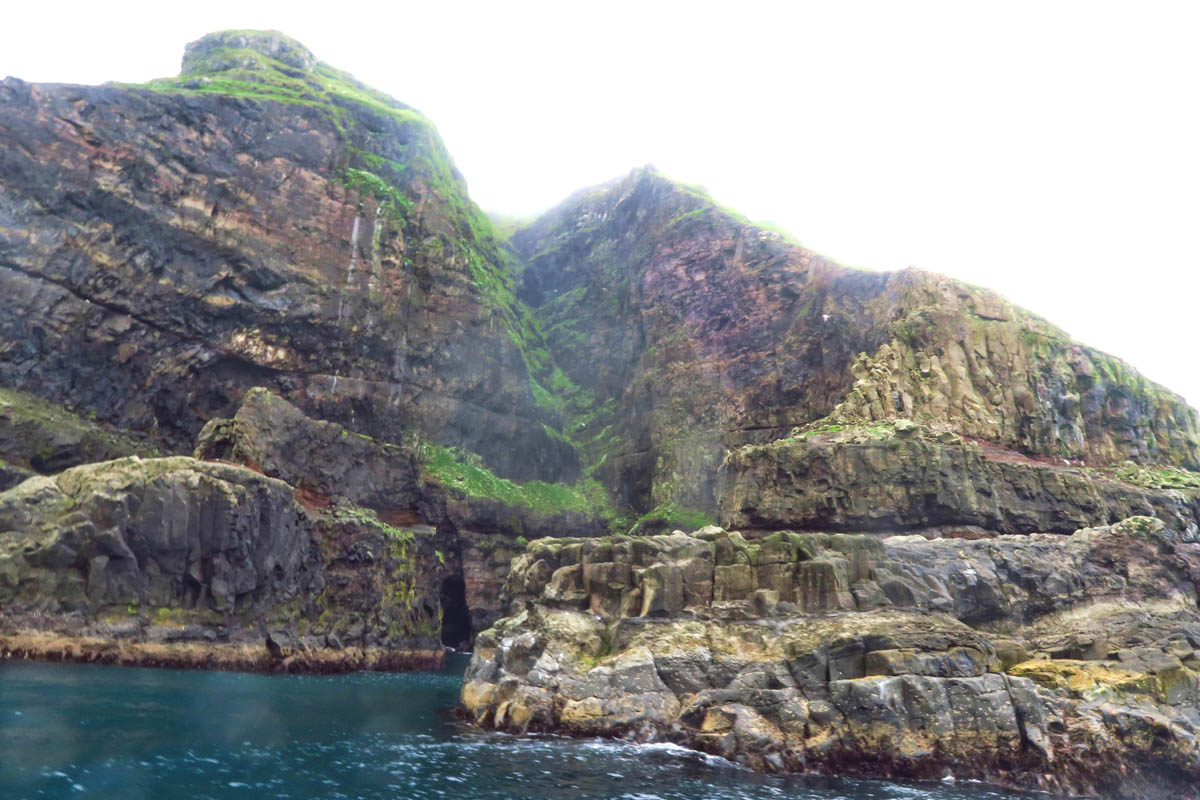 Nearing the ferry dock at Mykines. 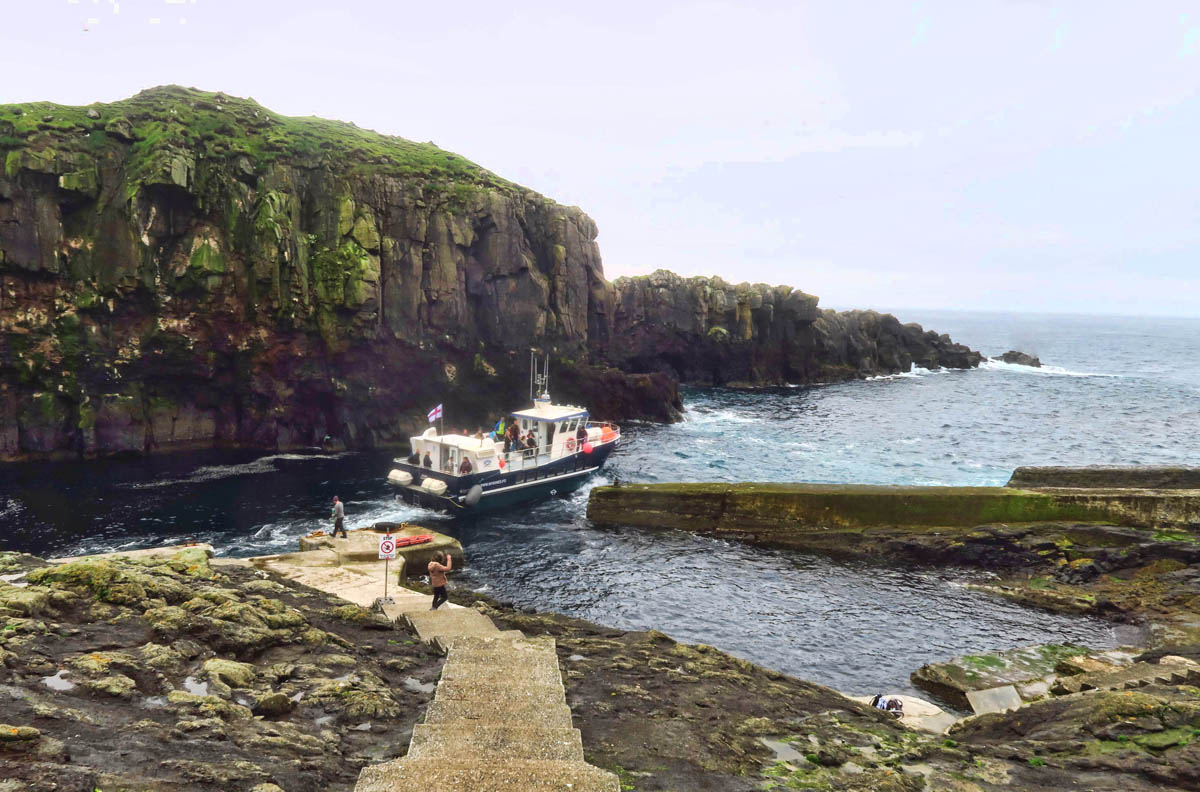 There are large swells at the dock, so you must get on or off the boat quickly so they can blast out of there. There is no “hanging around on the boat” while docked.

There are two reasons Mykines has become a popular destination. One is the hike to the lighthouse whereby one must navigate the 1km (0.6 mi) length of the islet, cross a suspension footbridge over a deep ravine before reaching the small lighthouse. The picturesque Mykineshólmur Lighthouse, built in 1909, is the westernmost lighthouse in the Faroe Islands. It was manned until 1970, when it was automated.

But likely the greater attraction to visit Mykines is its colonies of sea birds; gannets cormorants, guillemots, kittiwakes and razorbills nest on the ledges of the tuff layers in the cliffs, while thousands of puffins make their burrows on the grassy knolls above the cliffs. In particular, a trip to Mykines offers the opportunity to get a close look at its puffin colony, where an estimated 125,000 pairs of puffins breed each summer. The puffin colony on Mykines Island is a “Ramsar” site, designated by an intergovernmental treaty on protecting wetlands of global importance such as bird cliffs.

But alas, my timing in visiting Mykines appears to be a bust. The path to the lighthouse is closed for the season because construction is underway on the footbridge, making it impassable, therefore the lighthouse unreachable. And it’s now the last week of August. Most of the seabirds would have left already to spend winter at sea, their nesting season over for the year. For this reason, I came close to not going at all. However, I don’t anticipate I will pass this way again, so I decided to go for the boat ride alone. 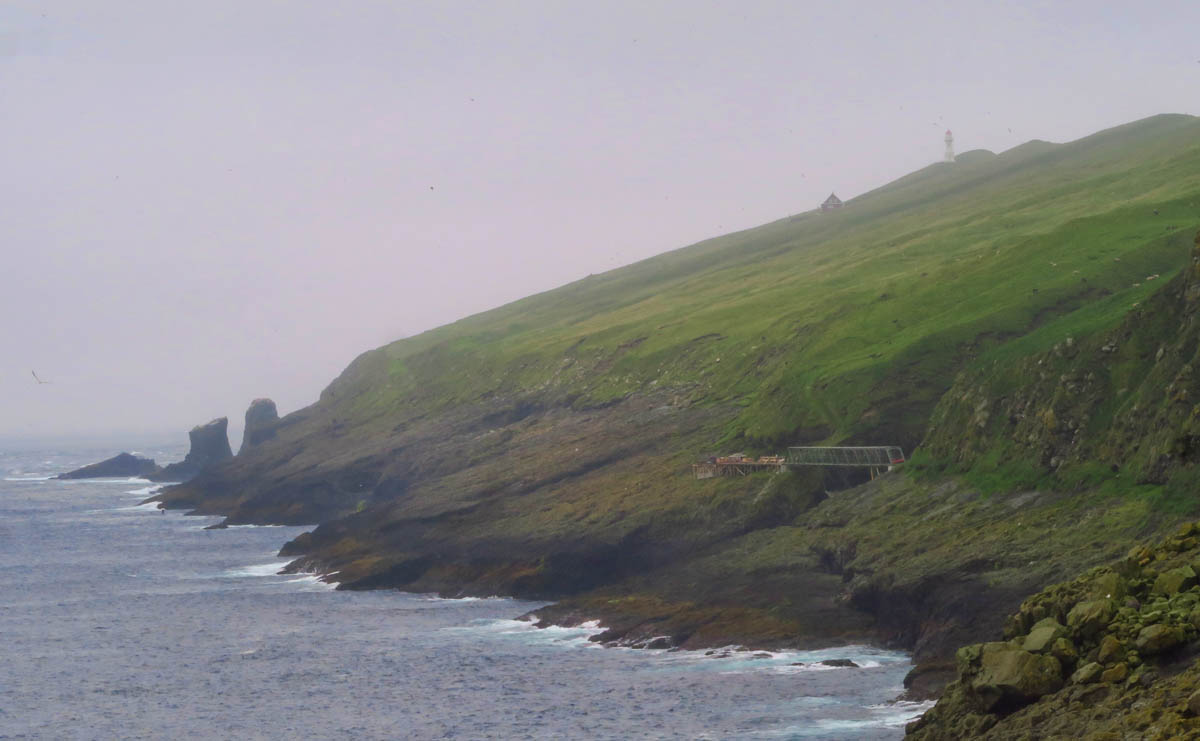 It’s tough to see in the low light, mist and fog, but in the distance along the ridge in the upper right is the lighthouse to where you can typically hike. In the lower right third of the photo, you can see the suspension bridge that is currently closed for construction, making the lighthouse temporarily inaccessible. 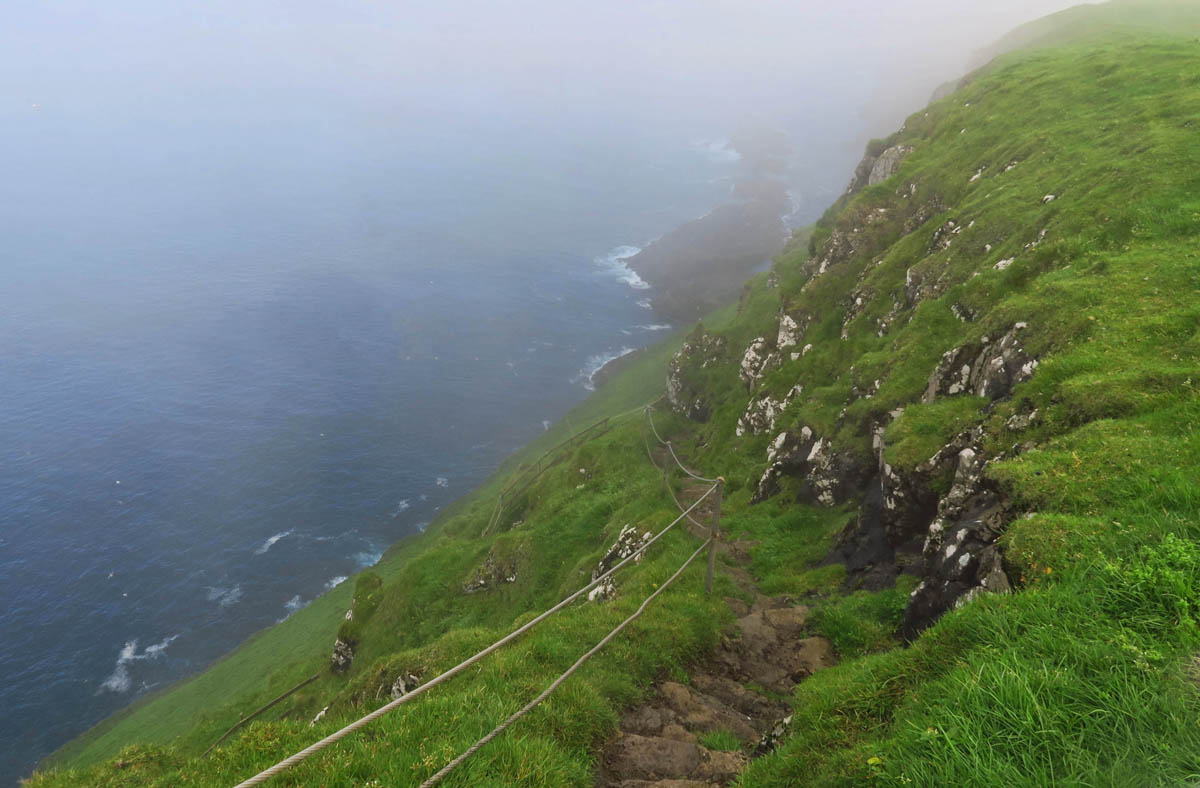 This is the hiking path that leads up over the main hill, then down to the suspension bridge and on to the lighthouse. I am standing at the gate where it is closed off for bridge repairs. 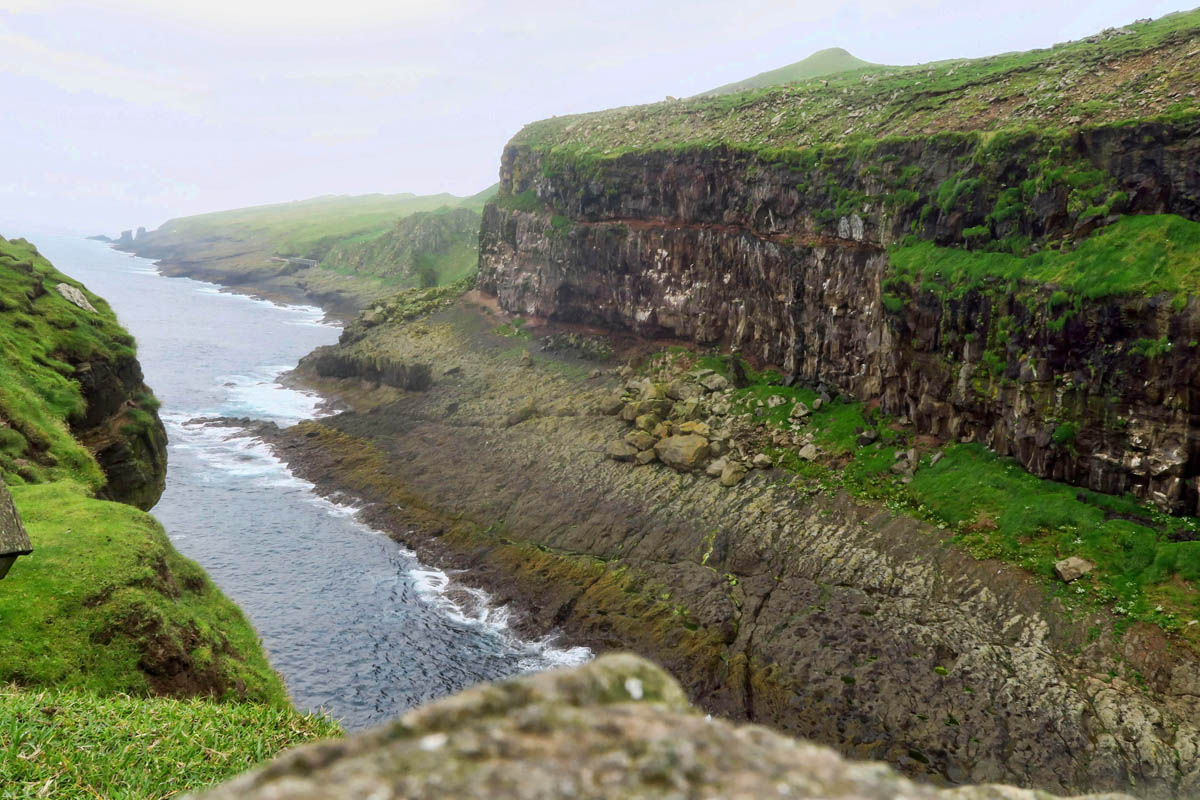 Once you are off the ferry, you are a captive audience for five hours. If you are not a hiker, this could be a loooong five hours. 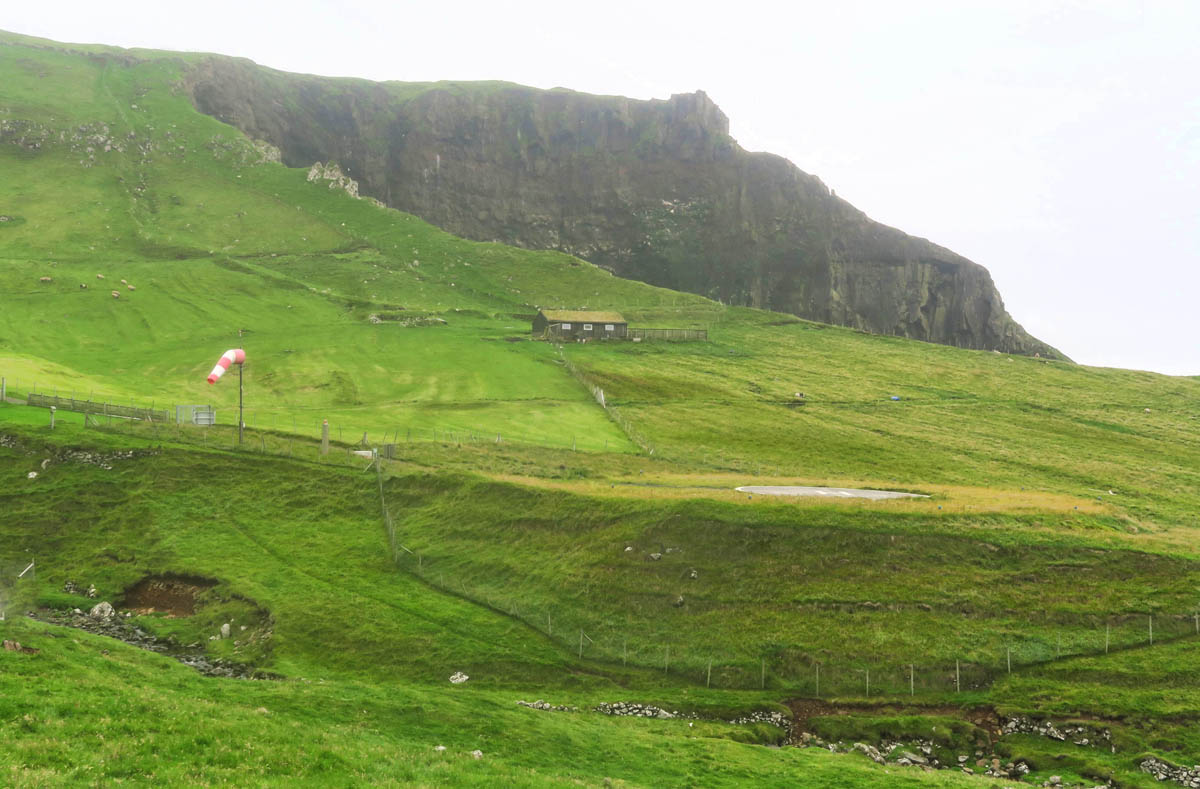 The only other way off of the island is by helicopter. Here is the landing pad. 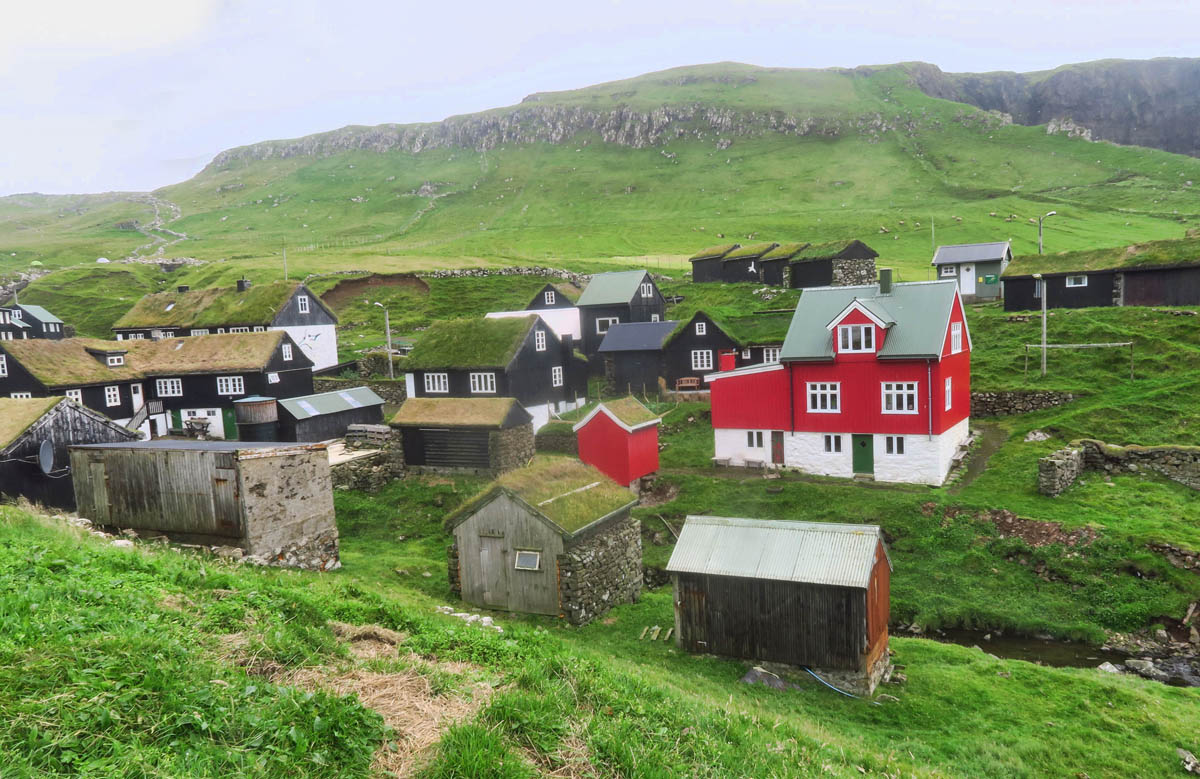 The village of Mykines (same name as the island) is tiny. Only about 40 homes and 10 permanent residents. 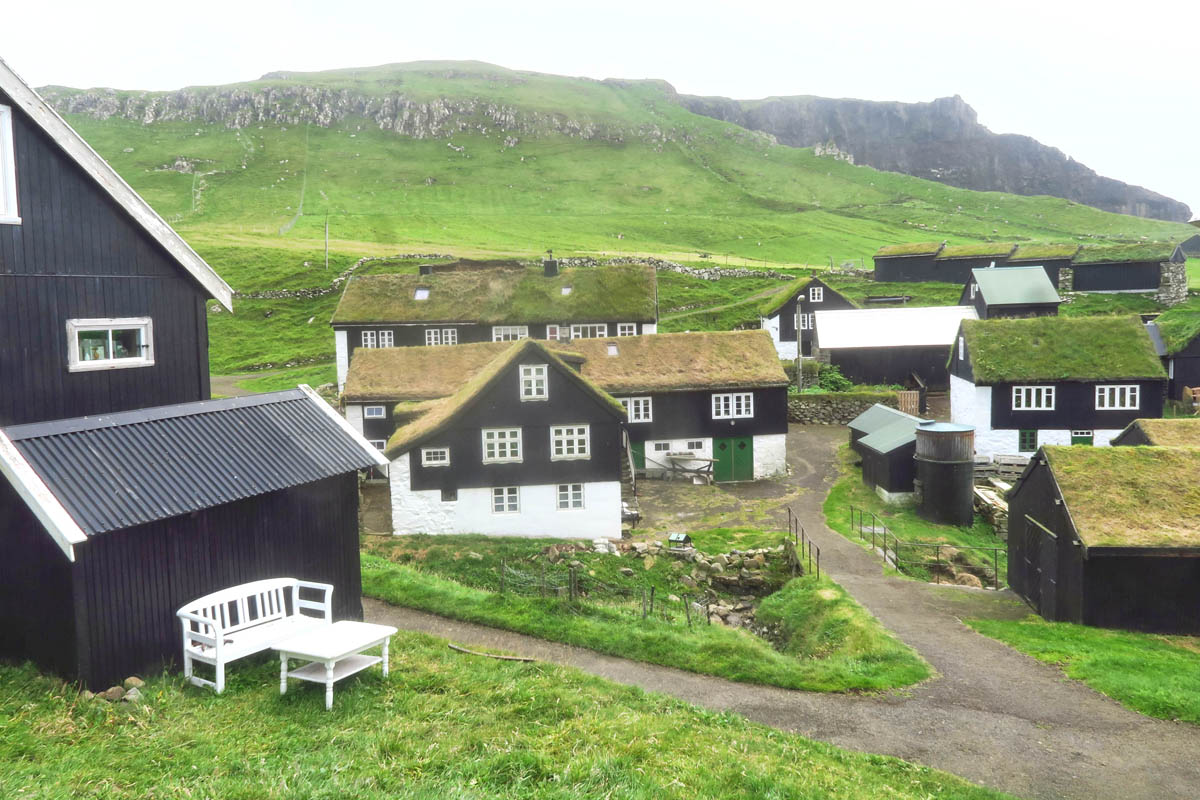 The traditional technique of turf-roofed houses dates back to the Viking age. The turf provides insulation. 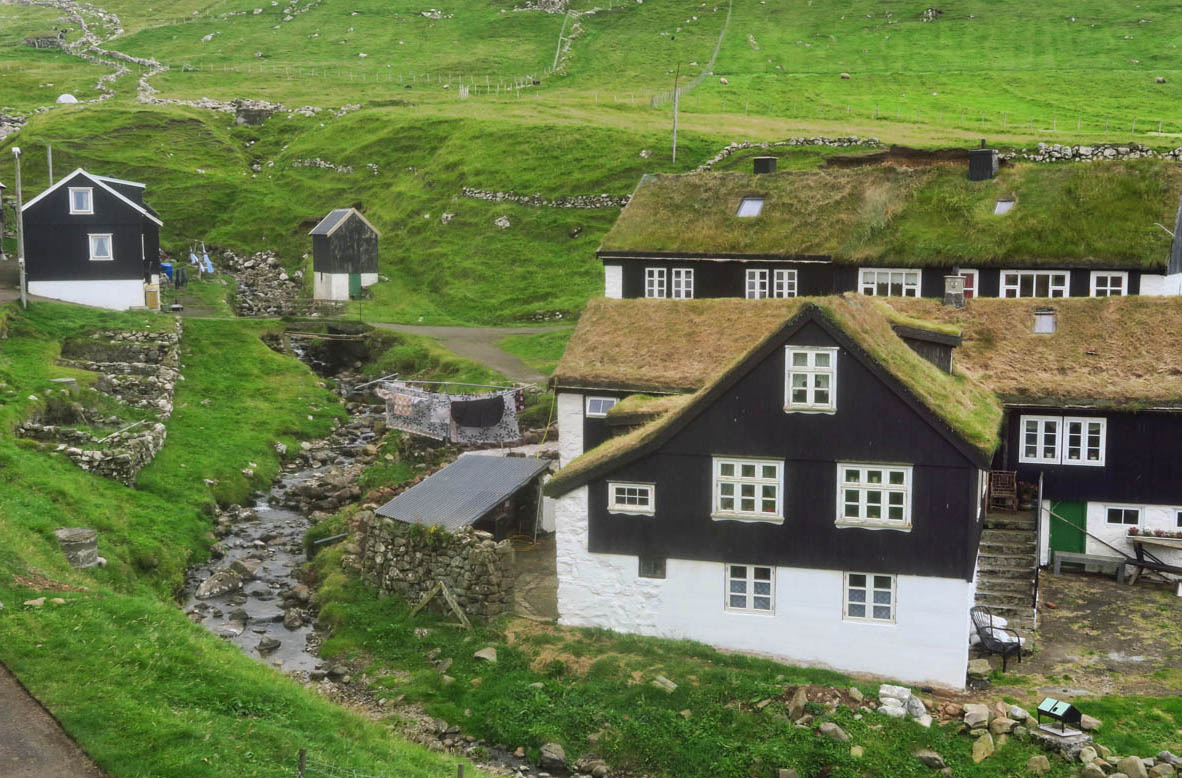 A small river runs through town. Clothes hanging on the line remind me of Newfoundland. 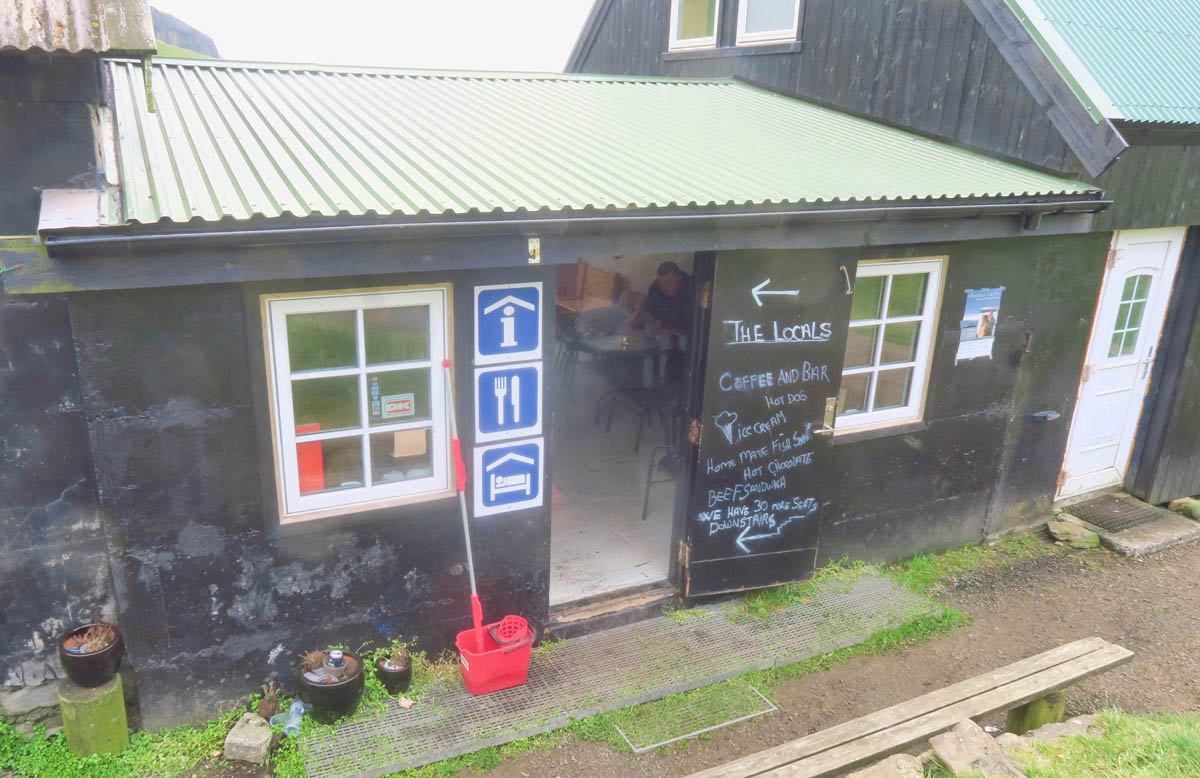 “The Locals” is the only place on the island for tourists to seek shelter if the weather turns bad, but they have a nice selection of beer and snacks! I asked for a “glass” to drink my beer outside on the bench, and was given a fancy goblet. Unexpected things can often delight. 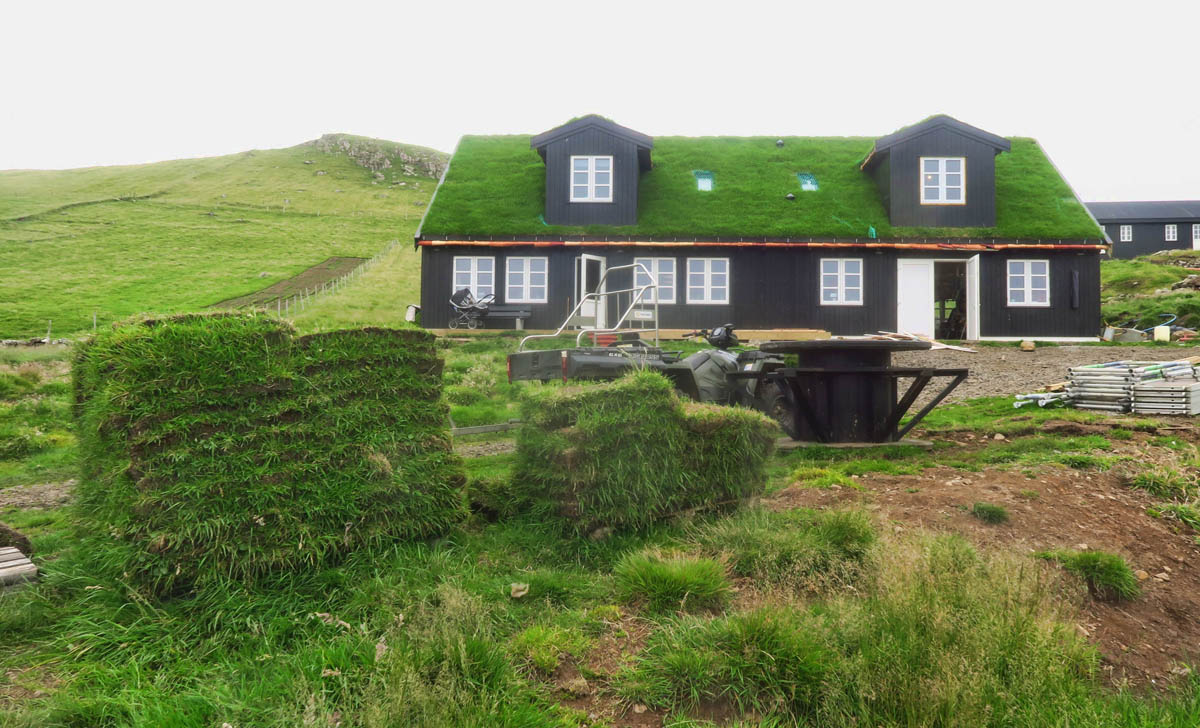 This building is getting a new turf roof. Maybe a new guesthouse? 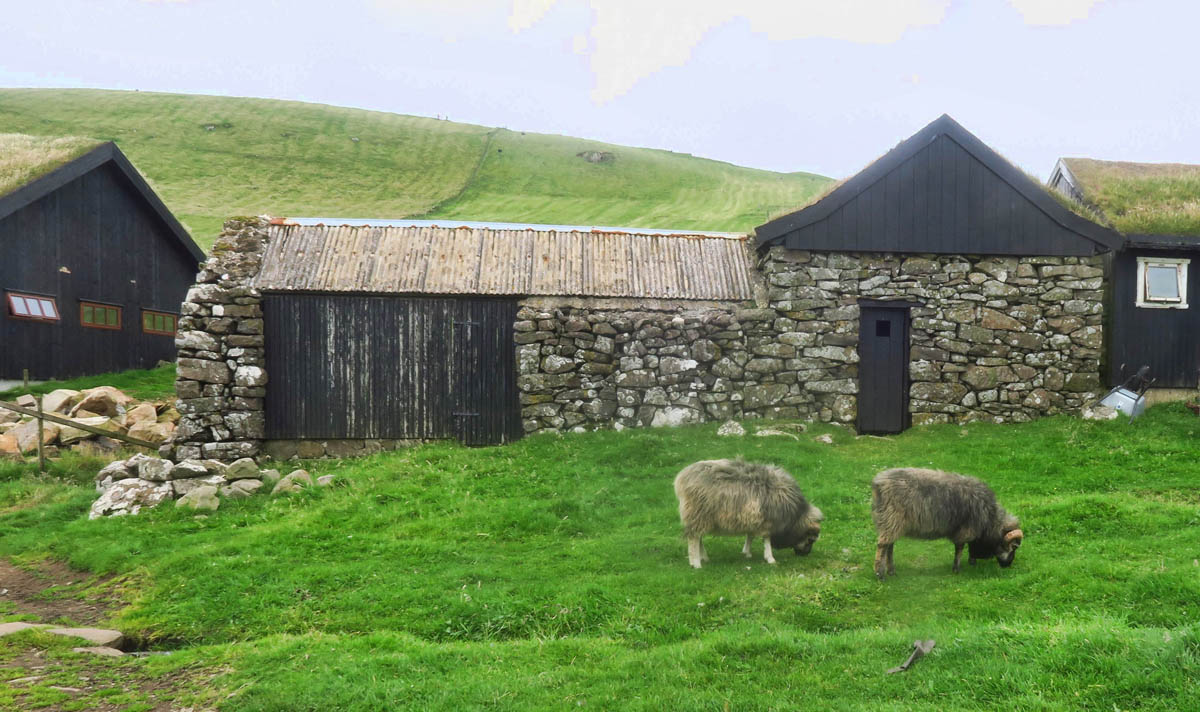 No Faroe Islands village is complete without the resident sheep. 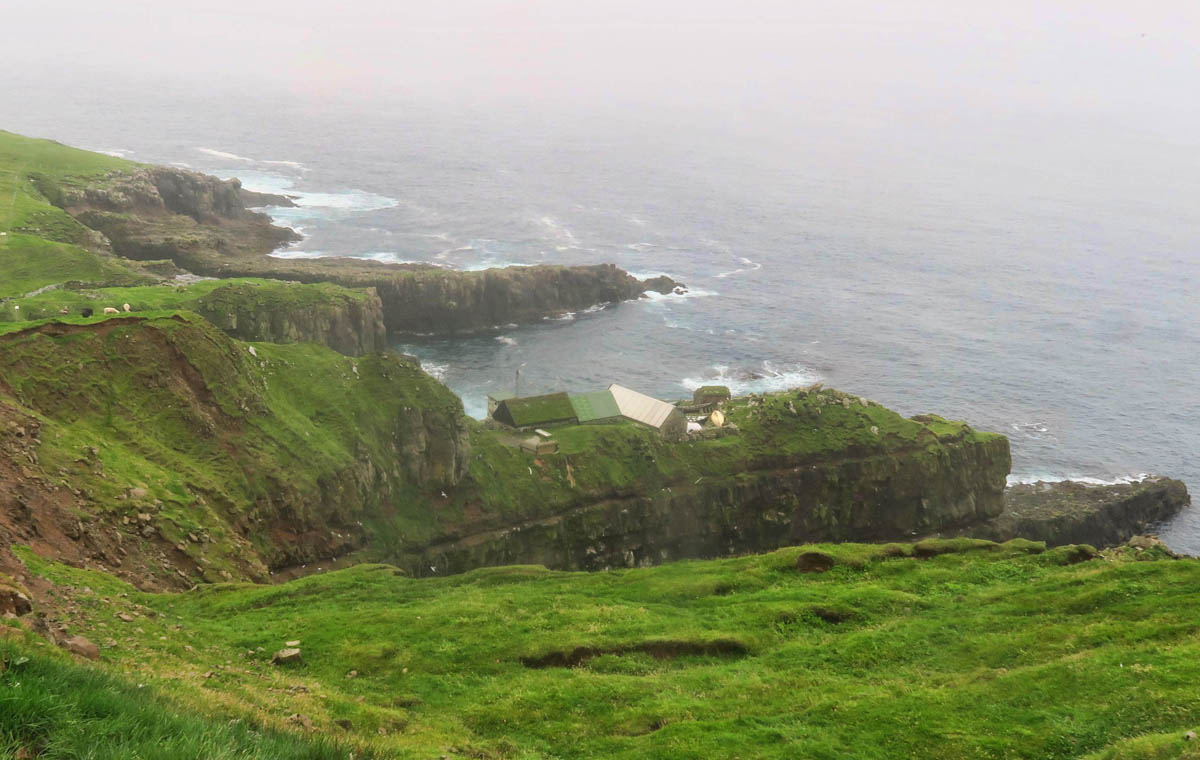 Check out this homestead! Out on that narrow promontory are three buildings, a couple of boats, and one big question of “How did it get there?”

It took some effort to check out of my hotel on the island of Streymoy, drive to the island of Vágar, then locate the ferry dock down very narrow, hairpin streets, finding a parking place for my rental car in time to meet the 10:20am ferry. But once the ferry ride was underway, I was glad I had made the effort, as the ferry captain drove us right alongside the sea stacks “Drangarnir”, one of the most iconic features in the Faroes.

This group of sea stacks, likely the most photographed spot on the Faroes, is only accessible by boat or by a 7 hour round trip hike. While I wouldn’t normally shy away from a 7 hour hike, this one can only be done with a guide (which means I would be racing to keep up, since my pace is slow in the best of conditions.) The path follows a steep angle in the side of the hill, meaning ankles are bent at an uncomfortable angle the entire way. But first and foremost, it costs DKK550 ($85) a ridiculous amount for a hike, guided or not. I had already written off the possibility of seeing it, so it was a nice surprise that the ferry captain took us so close. Unfortunately, it was a “snotty” day with mist, fog, and a bit of drizzle, producing dull and dreary photos to match the mood.

The Mykines ferry is notorious for cancelling when seas are rough. In fact, all the tour brochures recommend you go there at the beginning of your trip, so you have another chance should the ferry cancel due to bad weather. The boat dock is in a narrow channel, and if weather conditions are bad they cannot get in. This leaves the only options to hope for a seat on the helicopter provided they can fly, or scramble for overnight accommodations on an island with no hotels and only one guesthouse.

For this reason, along with the fact that the bridge to the lighthouse was closed and the puffins likely had flown the nest already, I came within an inch of staying on the boat and returning to the bigger island of Vágar where I knew I could get accommodation for the night. It was windy and misting rain with no chance of clearing. And there are very few places to get out of the weather for the five hour duration until the next ferry out. So the thought of staying on the boat to return to the cocoon of my warm, dry rental car was compelling. Thank goodness I didn’t, as the hikes were ethereal in the mist and fog, and the puffin encounters were unparalleled.

On the afternoon ferry returning from Mykines, I boarded the boat as quickly as possible to seek out a spot in the shelter from the wind and rain. In these times of COVID, I was determined to avoid “below deck” at all costs. I found myself a sliver of seat up next to the bulkhead. I confess to being somewhat irked when a tiny woman asked to squeeze in beside me. But by the time we reached the dock, I had made two new friends, Lisa from Rhode Island and Lynn from Manhattan. I would run into them again the following day on the hiking trail, and we would make plans for adventures together for the remainder of our respective stays on the Faroe Islands. 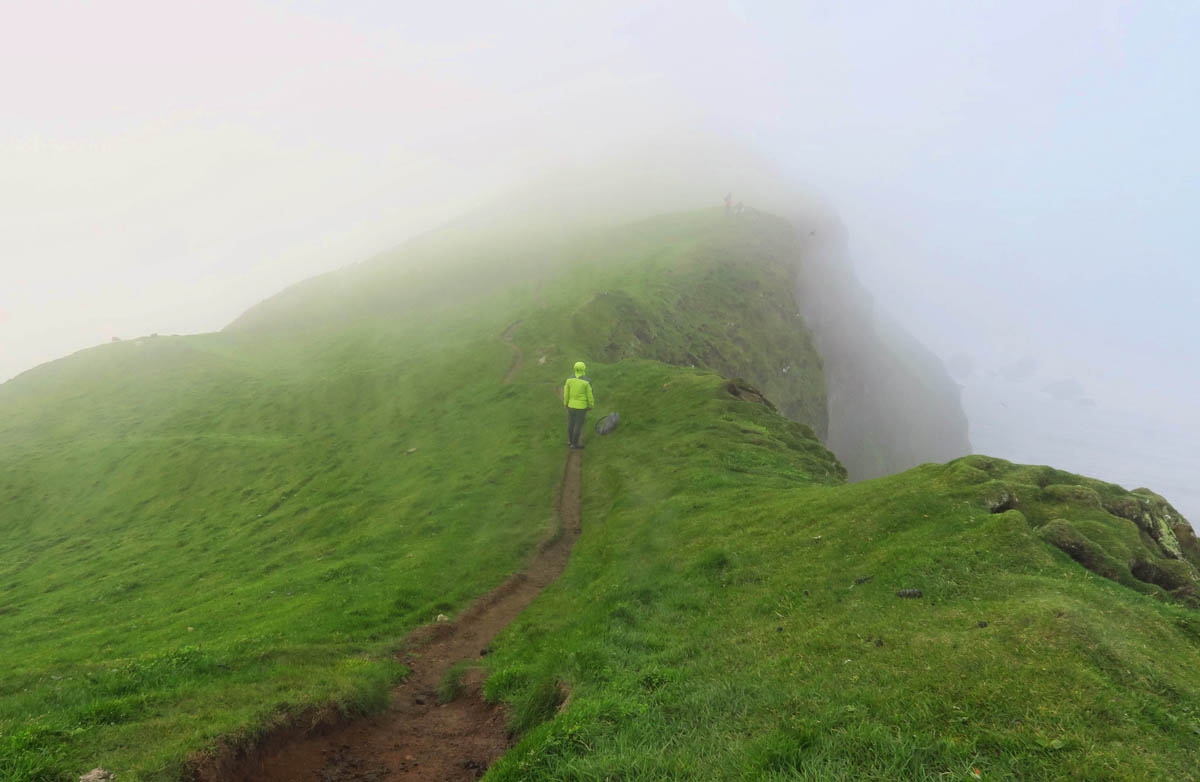 The hike out to the protected puffin area. I was surprised to see so many puffins remain this late in the season, as they typically leave mid-August, and it is now the end of the month. 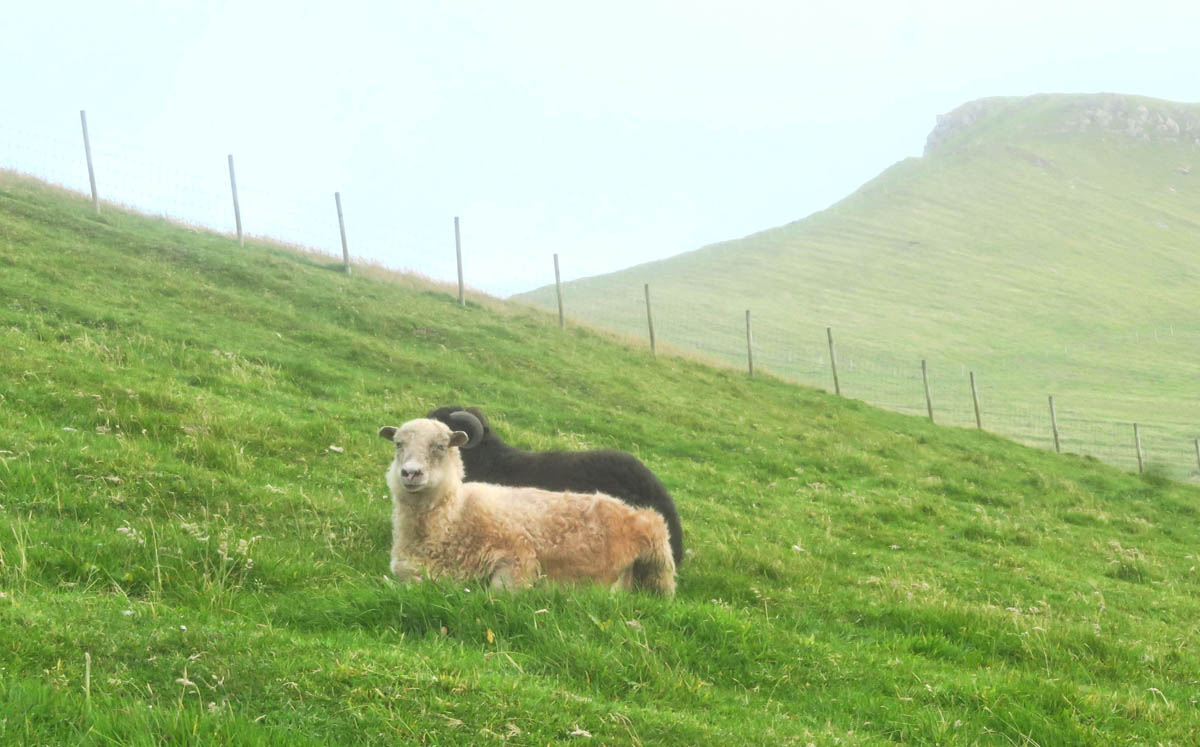 One rarely hikes alone in the Faroe Islands. 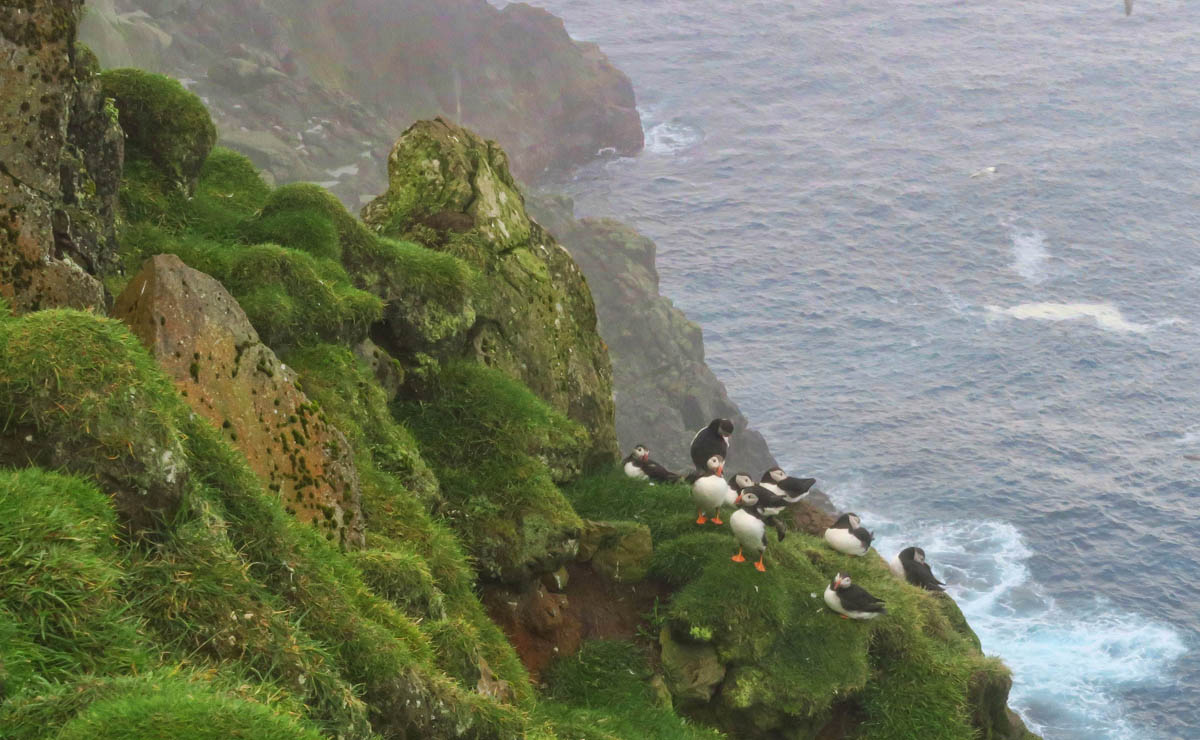 More bird pics, as per request from my cousin Karen. Sorry, Cuz…all I got is puffins. Lots and lots of puffins. 😉 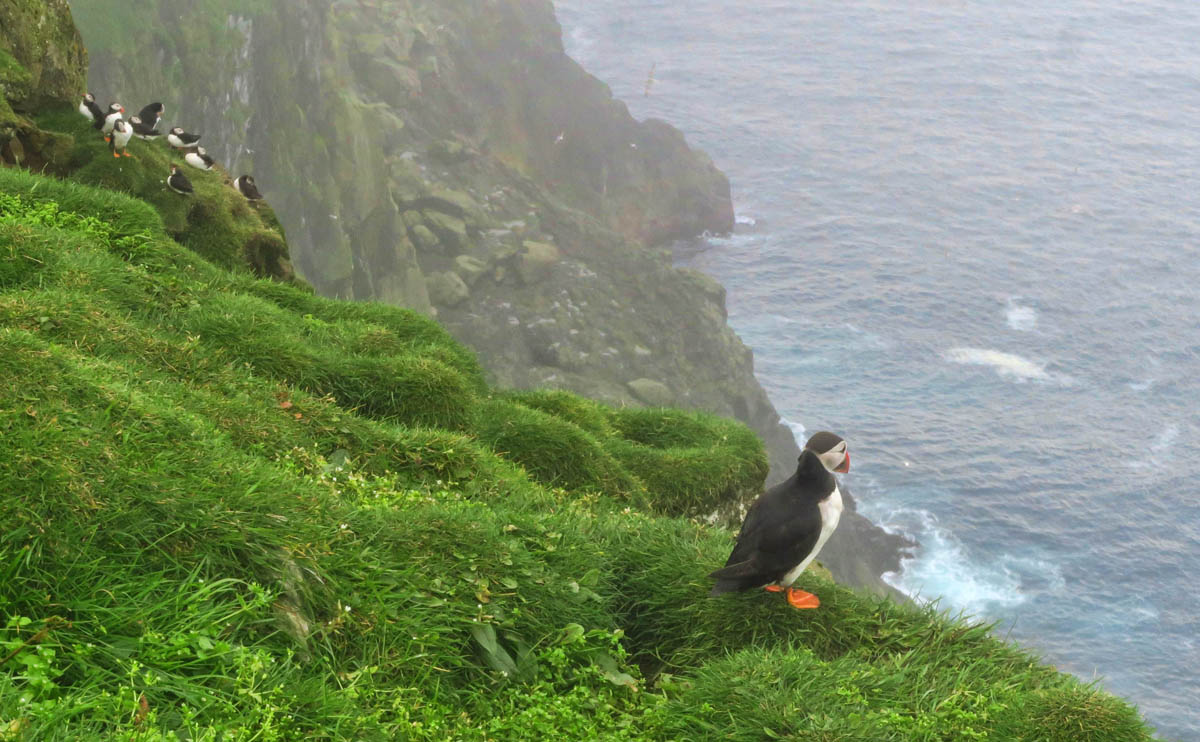 This one looks rather pensive, doesn’t s/he? 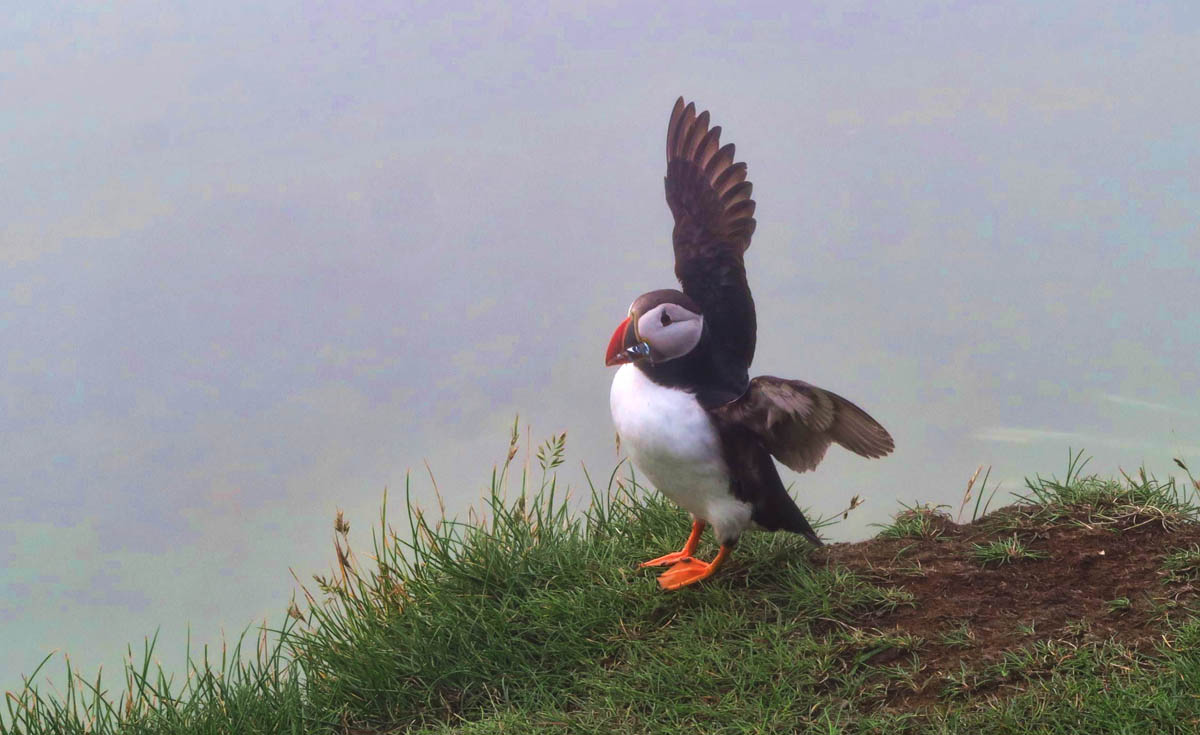 And here it is, the shot I’ve been hoping for….puffin with fish in its mouth! 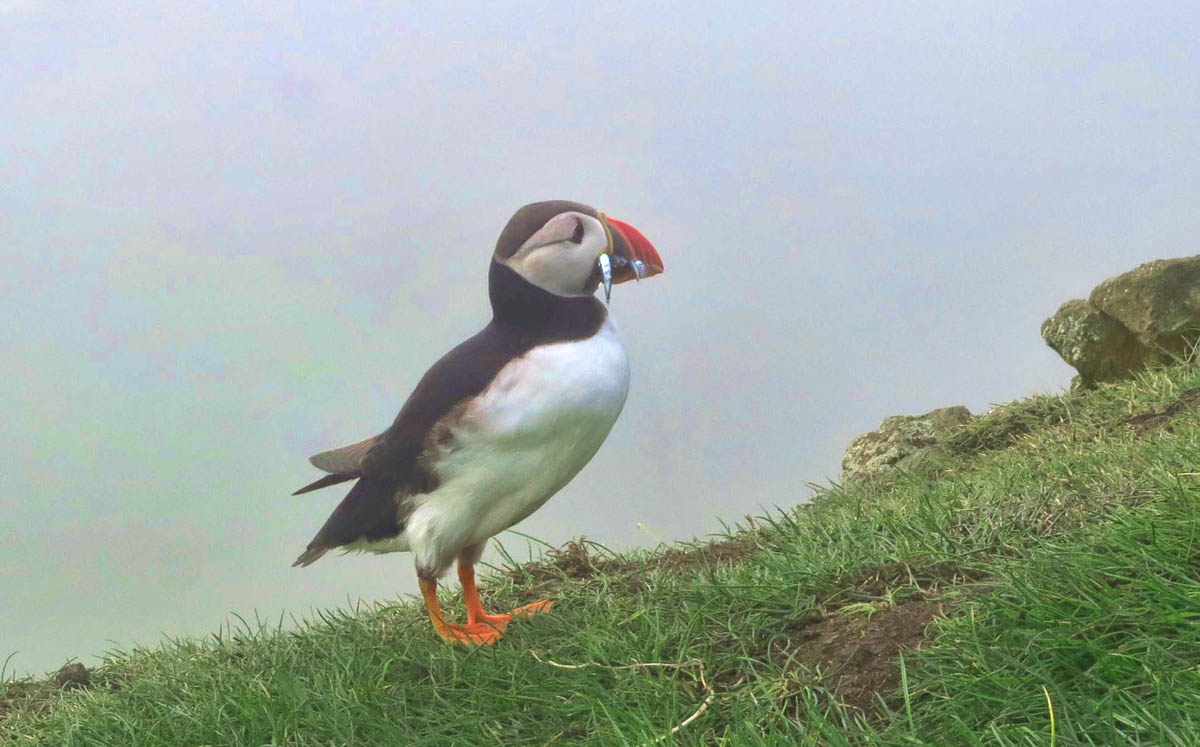 Puffins have spiny tongues that, pressed against the roof of their mouths, help to hold ten or more fish at once without losing any along the way. 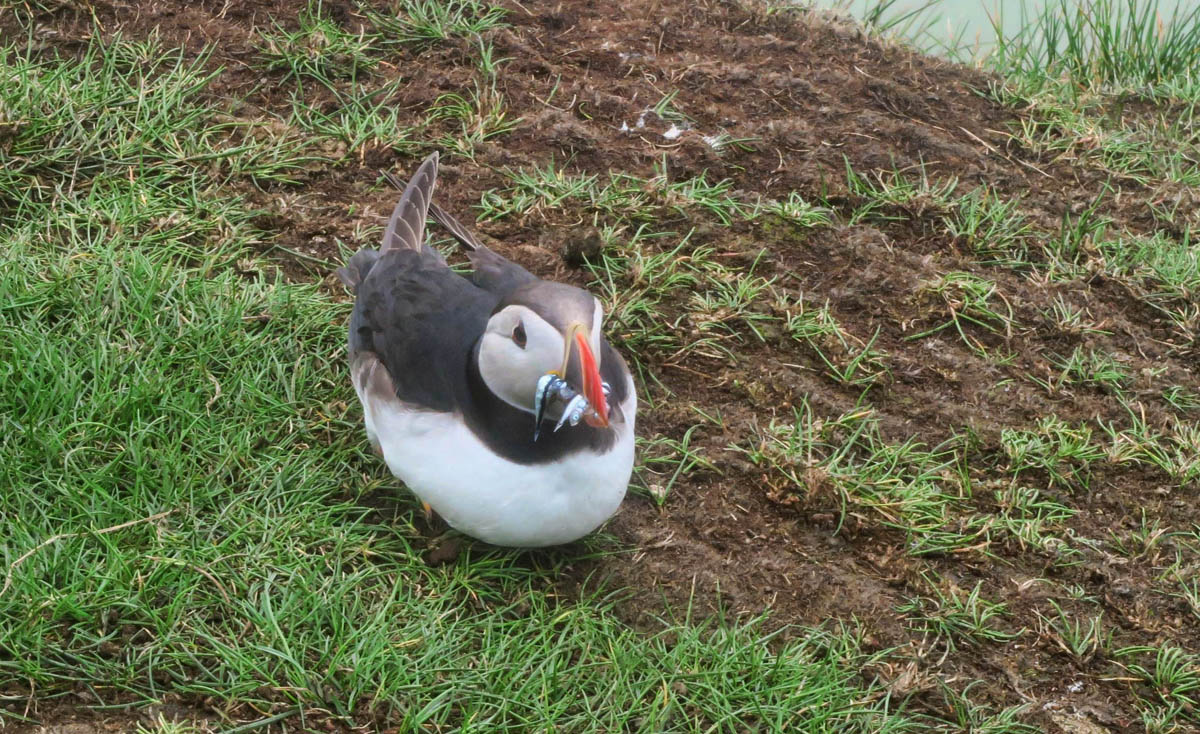 After observing for about 10 minutes, I wonder “Why aren’t you eating?” Then it finally hits me. DUH! S/he is waiting for me to move so s/he can feed their chick in the burrow below! As soon as I walk off, s/he hops into the hole and comes out empty. 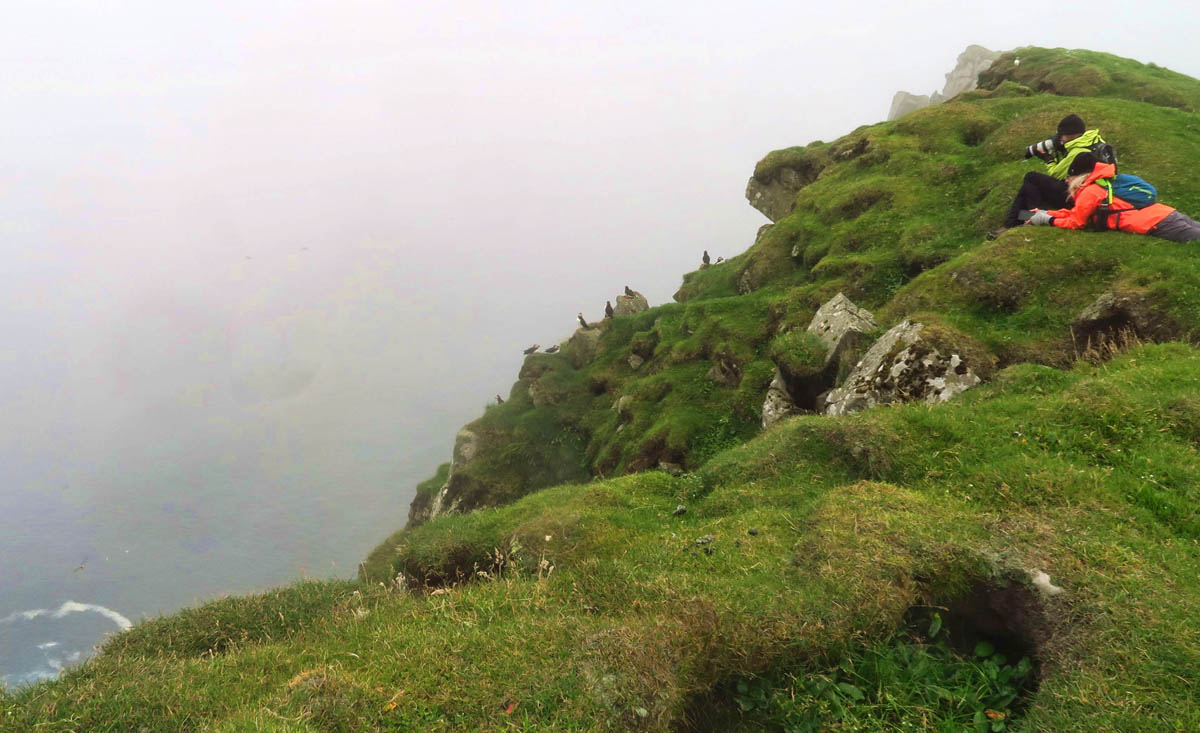 There they are in the wild…Lisa and Lynn. I took this photo before I met them.

10 thoughts on “Faroe Islands: The Many Moods of Mykines”