Since my recent goals have all been focused on downsizing, I rarely spend money on myself anymore.  My rule of thumb is, if it won’t fit in a motor home or a boat, I don’t buy it.   However, I recently came across two splurge items that fit that criteria…

I have been using the same Sears tent that I bought myself for my 40th birthday (you do the math!)  It has served me well and lasted far longer than I would have expected, particularly since I moved to Georgia where my camping excursions average four to six times a year.  I really loved everything about it, especially the front and back windows and the fact that it was small enough to carry under my arm, yet still big enough to hold my twin-sized inflatable mattress.  However, when I was at the “Women Go Solo” RV meet-up on the coldest night of my camping experience, I stabbed a hole right through the tent fabric.  It was only on the tent pole sleeve, but I gasped at the horror as I quickly assessed the damage, then “rrrriiiippp!!” the same thing happened again with the next tent pole.  Thankfully, it wasn’t the body of the tent, but still a warning that my “Edmund Hillary” model had lived out its best days, and it was time to start looking for a replacement. 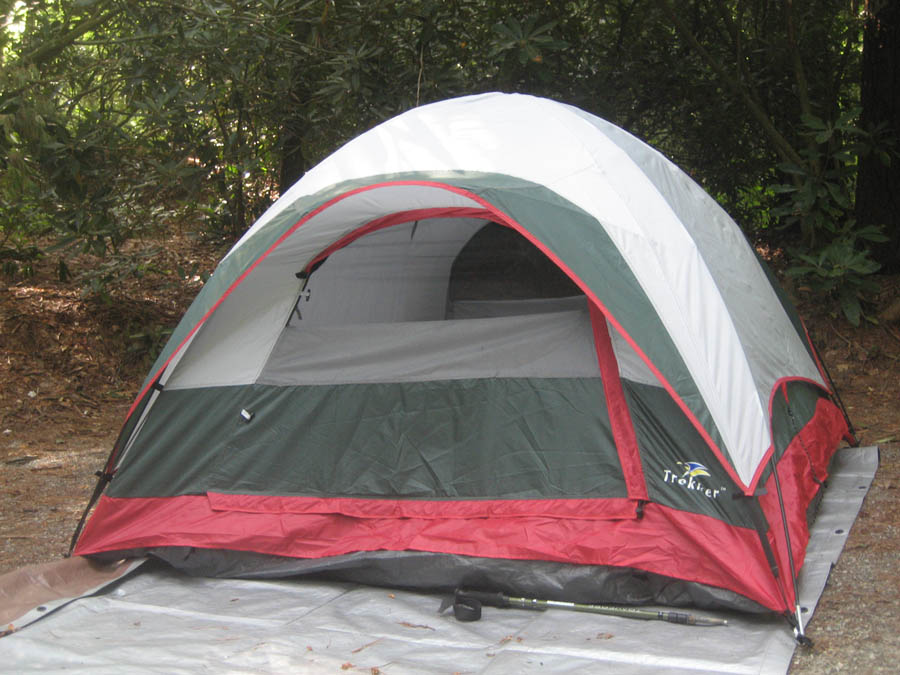 My brother Stephen suggested I try Cabelas, as he had recently purchased this same brand, just a larger model big enough to fill his entire living room (the only place he has camped to date.)   Although this one was slightly larger than my Hillary, it was one of the few tents that contained a front and back window.  I like to see the trees when I wake up!  It seems the trend these days for the backpacking tents is to build the base out of mesh, and then cover the entire thing in a ground-up rain fly with no openings.  So you have two choices; with the rain fly off, you feel like you are sleeping in a fishbowl, not ideal for a solo female camper.  With the rain fly on, it feels like the neon blue or day glow orange Northface nylon walls are closing in.   So Cabela’s Trekker seems to be just what I was looking for, and a bargain at $69, including free shipping!   As I pitched the tent, I was grateful for the ample rain fly with little pole “awnings” as I heard the sound of thunder rumbling in the distance.

I took it for a test drive to my favorite campsite just outside the Highlands in North Carolina.  Once you cross the northeastern Georgia border, it is a steady, snaky climb up 20 winding miles through the Nantahala Forest where the temperature drops a good 10 degrees due to a rise in elevation of about 4,100 feet. 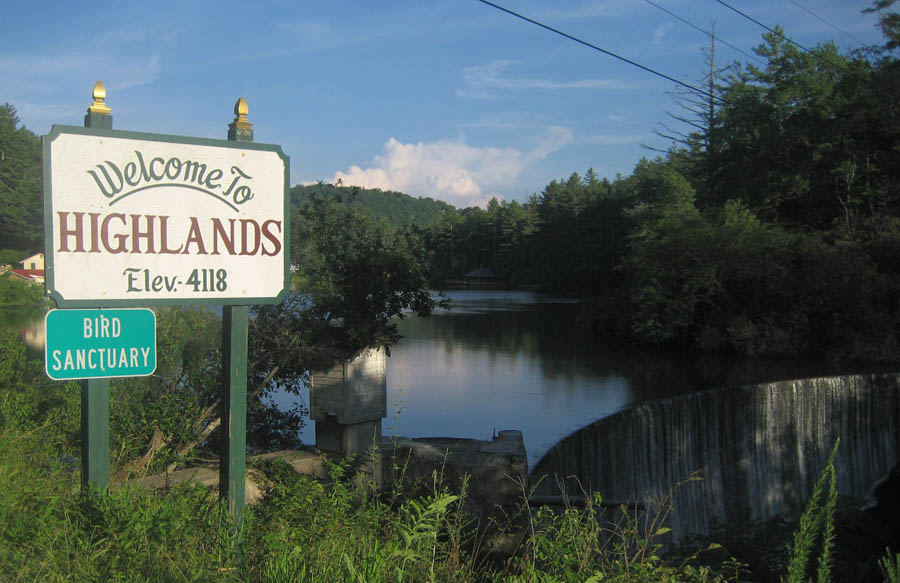 The Highlands is a cool little weekender destination with lots of expensive boutique shops, al fresco dining, and enough chocolate shops and ice cream parlors to chip away at the best of all intentions of even the well-heeled urbanites, who stroll the main street licking ice cream cones with their sweaters tied around their necks, seeking a respite from the heat of the city.   What most people don’t realize is just five miles outside of town lies a tiny little National Forest Service campground tucked off the thickly wooded, scenic highway.  With only 20 campsites and a cool, refreshing river running alongside it, advanced reservations are a must. 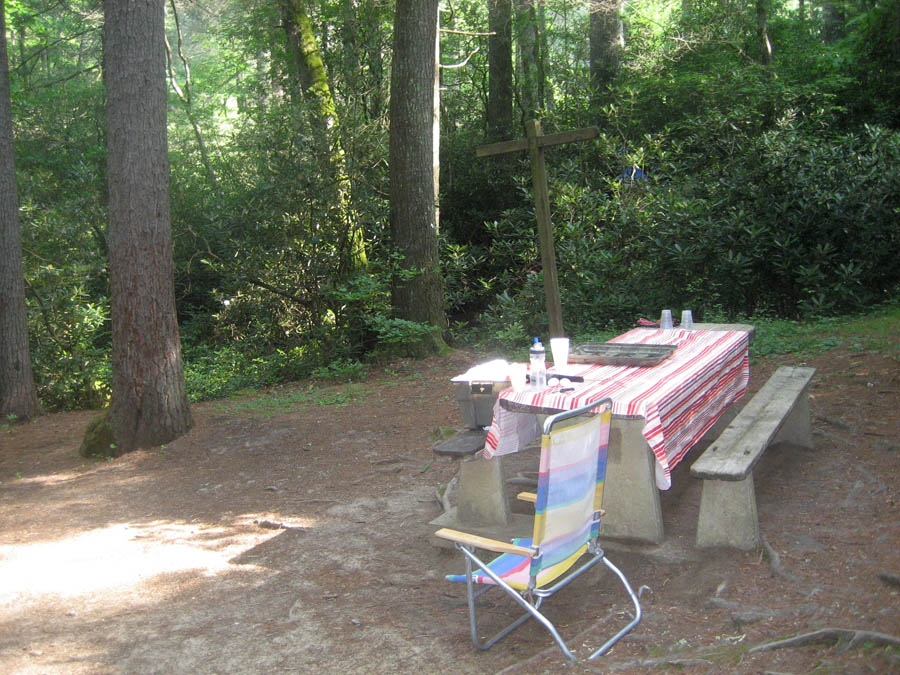 I drive two and a half hours to get away from the noise of the city, and that is one of the many reasons why I love this campground, because with no hook-ups, it is typically very serene.  Nothing irritates me more than to find someone in a campground with the car radio blaring Why leave home?   This weekend, there are two, so it is dueling country twang with the base rattling the dashboards, “thump, thump, thump.”   Thank goodness they were on the opposite side of the loop from me, so I can really only hear it when I make a trek up to the bath house.    I often wish I lived in the Pacific Northwest where fellow campers are peacenik nature lovers instead of the Georgia red necks spending a night in their pick-up trucks listening to Charlie Daniels wail, “Be proud yer a rebel, cuz the South’s gonna do it agin!”  As is often the case, the loudest ones are usually just passing through looking for a cheap place to sleep, so thankfully the guy left out early the next morning. 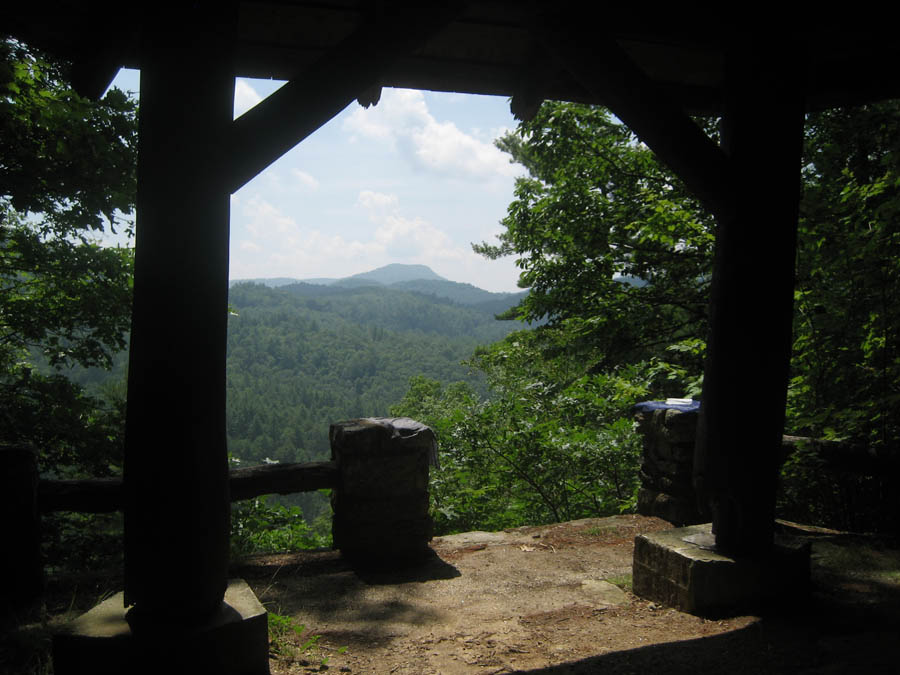 One of the things I like best about the little campground is the Clifftop Vista trail, which can be accessed right from the campground.   It’s a healthy climb to the top, then a beautiful downhill stroll through the Rhododendron forest alongside a stream, ending at Cliffside Lake for a total of about five miles for the complete circuit.   I made the entire hike this time without seeing a single person until I reached the lake. 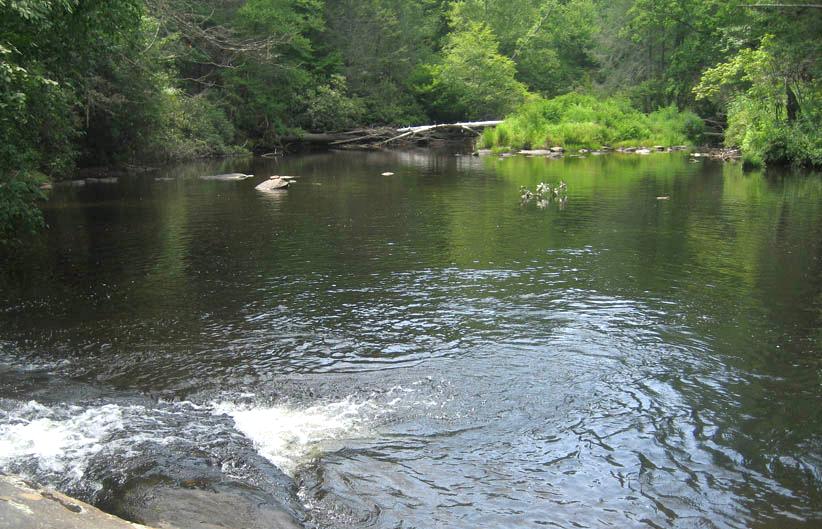 And…A river runs through it!  This photo was taken from a giant rock in the middle of the Cullasaja river, where you can wade across and lie on the rock like a salamander, dipping into the little falls occasionally to cool off.

And of course there is the nearby thundering Dry Falls, named so because it is possible to walk behind the falls and stay dry. 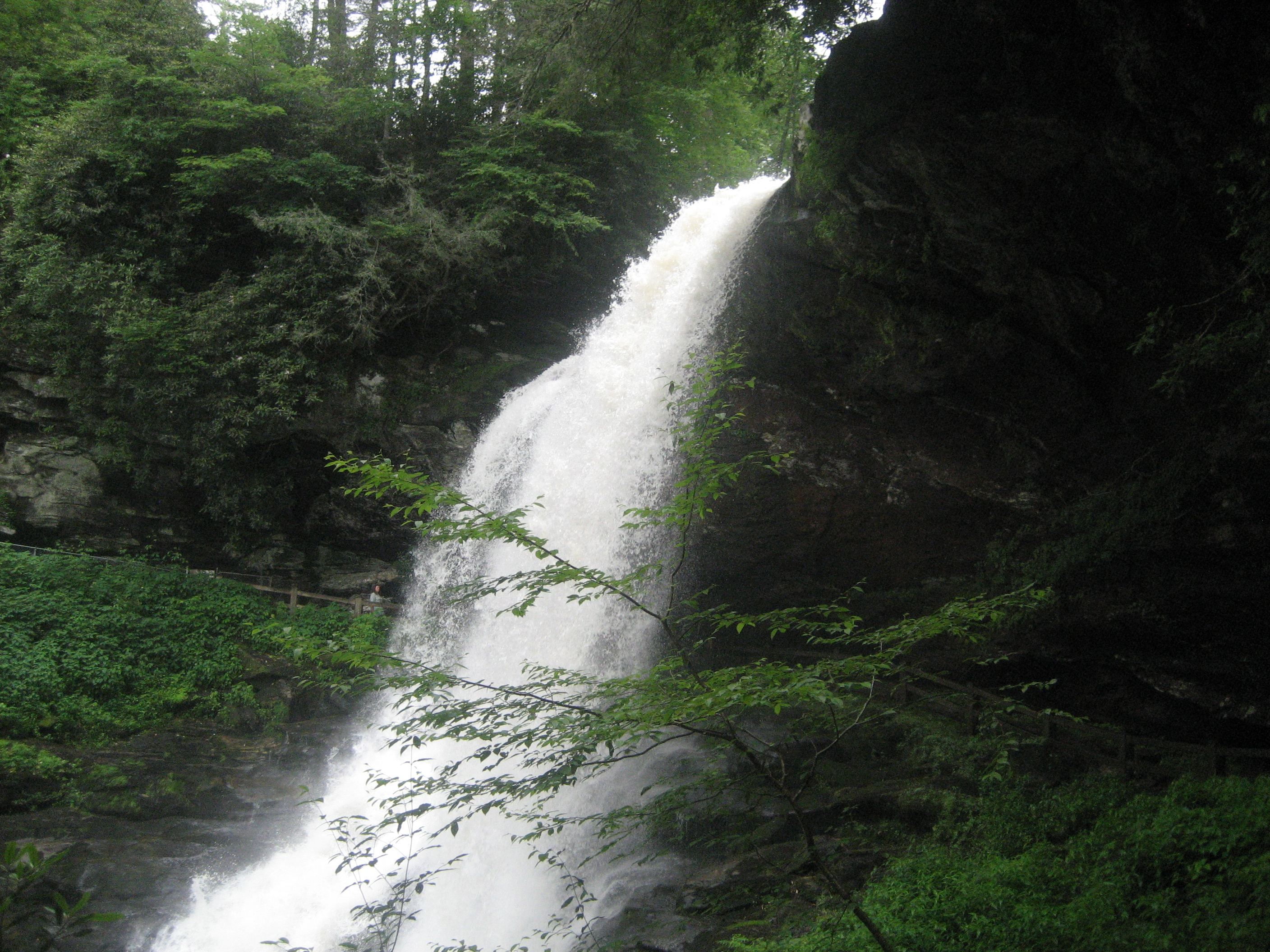 Another purchase from my ebay windfall is my new Sea Eagle 330 inflatable kayak.  My intention was to stop by one of the area lakes on the way home and take it for a test drive.  I looked at the seats, and they both had valves installed, so I went on the assumption that the kayak hull had the valves installed also.   I am embarrassed to admit my stupidity, but unfortunately, those that I found in a spare bag were not “extras.”    So tales from that part of the shopping spree will have to wait for another day…

6 thoughts on “My Version of a Shopping Spree”