Whenever I ask any of the locals to recommend the best sights to see in the area, they are always quick to come up with a “best” list – best beach, best waterfall, best hike….but it is always amended with, “…..but don’t go there alone!”    When I ask them what’s the worst that could happen, I don’t get many specifics beyond, “it’s just not a good idea.”   After about the third such warning, I decided to acquiesce, stimulate the local economy and hire a guide. On one hand, for a loner like me, it is a bit of a pain having him with me every step of the way.  On the other hand, it was a welcomed relief to sense the more assertive men in town go from “hopeful” to just friendly.

Prim arrived promptly at 9:00am while the sun was well on its way to heating up the day.  By the time we had discussed options on where we should go, clouds were starting to roll in.  By the time we made it to the car, it was sprinkling.  To the end of the street – a flood.  It would end up raining most of the day, but that didn’t seem to faze him, and I was just enjoying the ride from the passenger’s side.

We drove the loop of the northern tip of the island, up over cliffs and vistas, along mountain ridges where you could see the Atlantic Ocean out one side of the car and the Caribbean outside the other.  Unfortunately with all the dark clouds and rain, the sea and the sky were the same color, otherwise I can only imagine how breathtaking the view!

Blue bags on bananas keep birds and field mice out

Prim made many stops along the way to explain the horticulture of the island, pointing out breadfruit trees, mango, avocado, grapefruit, all laden with fruit in various stages of ripening.  There is no overemphasizing the abundance of things growing in the trees on this island!  Most locals live easily off the land.  We passed banana plantations (the blue plastic sheeting is to keep birds and field mice from nesting and feeding on the fruit.)  Prim gave me the local explanation of the word “provisions,” which appears on every menu as a generic term for their root vegetables; yams, potatoes, and “dasheen,” a local vegetable with the root and green leaf both used to make Calalloo soup.  He picked fern leaves to make fern leaf “tattoos” and lemongrass for tea. 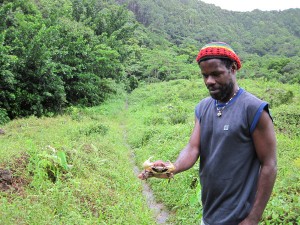 My favorite part of the day was “The Cold Soufriere,” or cold sulfur spring.   After a 15 minute hike through lush, wet marshes where Prim found some fresh water crabs, then through dasheen and yam fields, we waded through a shallow stream to get to the cold sulfur springs, a rock clearing with seventeen vigorously bubbling pools reeking of sulfur.  I have seen bubbling geothermal activity such as this in many places, but never where the pools were ice cold.  It is believed these pools sit on top of cool volcanic magma that releases hydrogen sulfide gasses from pressure.  It was a bizarre phenomenon, indeed! 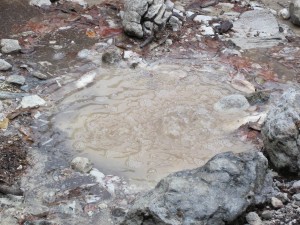 Cold Soufriere, one of 17 bubbling sulfur

Our plan was to head over to the more calm Caribbean side for snorkeling; however the entire coastline looked like cafe au lait from all the runoff of the raging rain-swollen rivers. 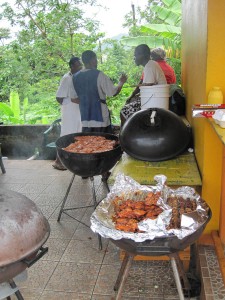 The smell of BBQ chicken on the grill caught my attention long before we arrived at the little alley in Picard lined with local food stalls and juice stands.  Prim loaded up on “provisions,” while I went for the BBQ chicken and fresh fruit salad of mango, pineapple, and watermelon.  We took our food “to go” so we could eat by the water, but just as we were finishing up, the clouds rolled in followed almost immediately by the rain.

Rain showers in the Caribbean bring cool afternoons and the sound of raindrops clattering on palm fronds.  After a couple of cold Kubuli beers, that is the perfect recipe for a nap…