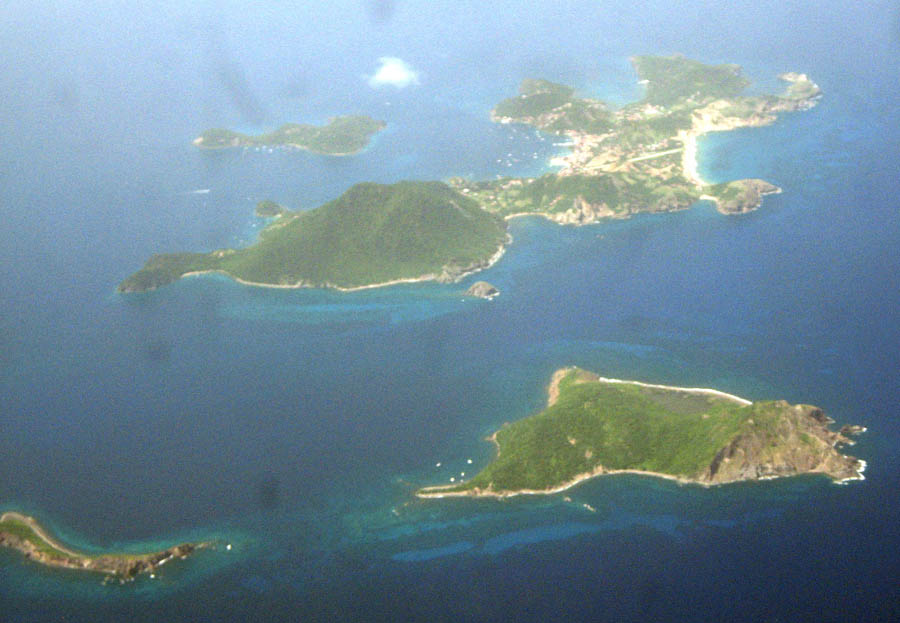 View from San Juan to Dominica

I had two noteworthy experiences during my connection through the San Juan Airport – the first was the wacky TSA woman who said to me after I had passed through their big “Beam me up, Scotty” scanner, “I need to massage your hair piece.”   I asked her three times to repeat what she had said before she finally explained in broken English that she needed me to remove the clip from my hair while she ran her latex-covered fingers through my hair — I kid you not!

The second double-take was while checking the Diet Coke prices inside the terminal — $3.98 for a 20 oz bottle!  I actually had to look twice to make sure I was not seeing things.  The can was a bargain at $2.75!  (As addicted as I am to Diet Coke, I will never be THAT desperate! 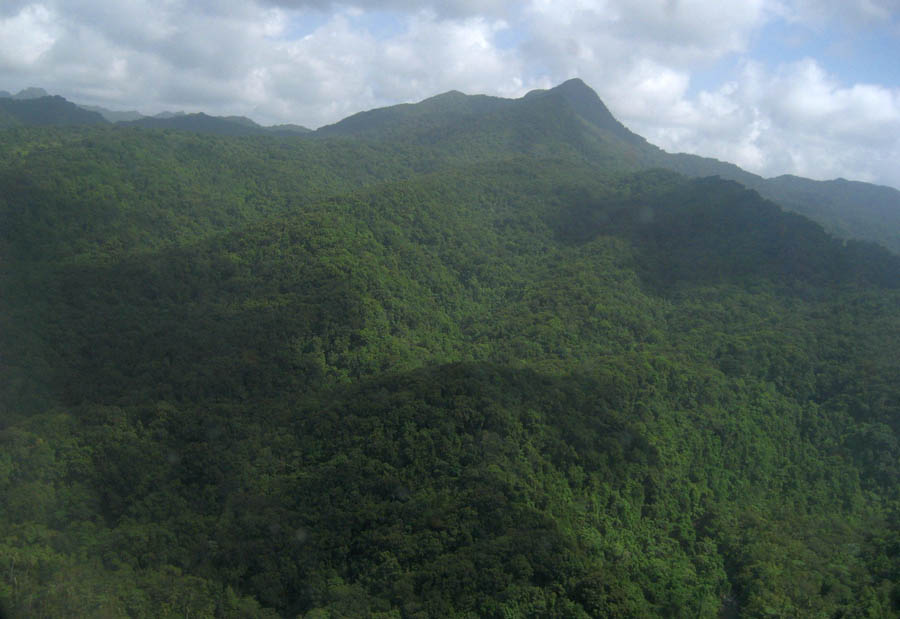 Dominica is a 90 minute flight out of San Juan, with a lot of good “island hopping” scenery out the window.  The runway approach alongside the lush green mountainous terrain was breathtaking.

There was a US citizen now living in Dominica in front of me in the customs line who said “Expect them to go through every single thing in your bag…they are bored!”   Having just checked the “NO FOOD” box on my customs form, I broke out in a sweat thinking about the bags of nuts, trail mix, and protein bars hidden in my bag.  I know I must have had guilt written all over my face when the Customs Officer said, “Tell me everything that is in your bag…”   Fortunately, he must have seen more interesting prospects behind me, as he let me go without a bag search.  If I get that paranoid over trail mix, I guess it is a safe bet I don’t have a future as a drug mule! 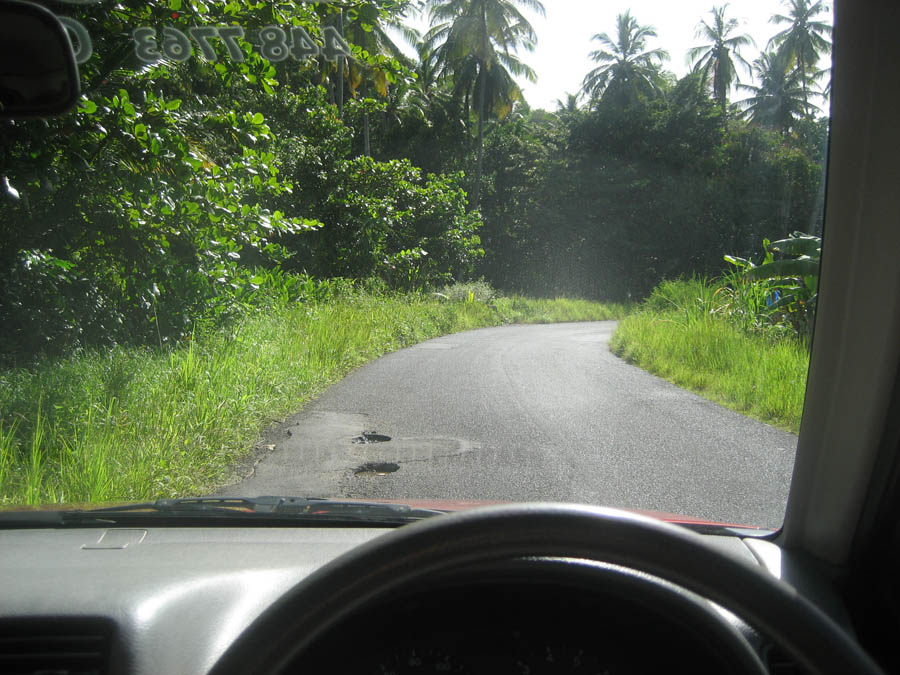 Although I knew I would be driving on the left side of the road in Dominica, the fact that the steering wheel would also be on the wrong side had slipped by me.   I lost count at how many times I turned on the windshield wipers trying to signal a turn.  Between trying to remember to stay to the left while avoiding 12 inch deep drainage drop-offs, cars and trucks parked on the wrong side of the road, dogs, kids, and goats walking down the middle of the roadway, watching for the brightly painted directional signs, all while trying to catch some of the most spectacular scenery I have seen on a Caribbean island, I needed a seven second delay for the words coming out of my mouth! 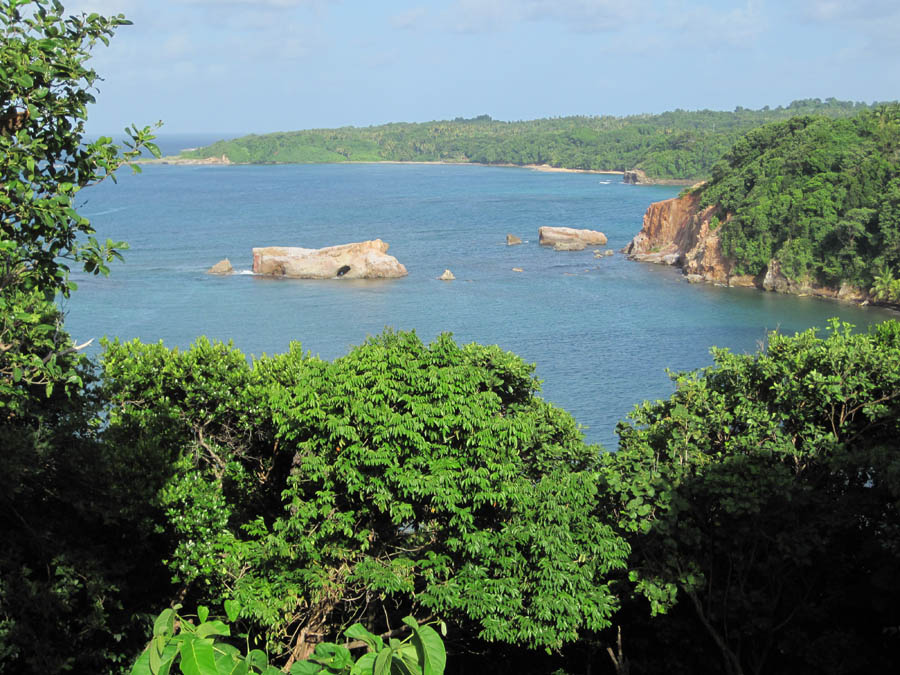 I didn’t get to the Sea Cliff Cottages until after 3:30pm.  By the time I had “orientation” with Gweneth, the very friendly and helpful manager, it was getting close to 4:00pm.  My intention was to avoid driving after dark until I got more comfortable with the rules of the road, so I raced around to jump into my swimsuit for a quick dip in the ocean before heading off to the market.  (I would later realize driving after dark is the easiest time to drive for two reasons – one, you can see the lights of the oncoming cars around the curves, and two, everyone, including the goats, seems to go to bed by 7:00pm, so I was practically the only car on the road!) 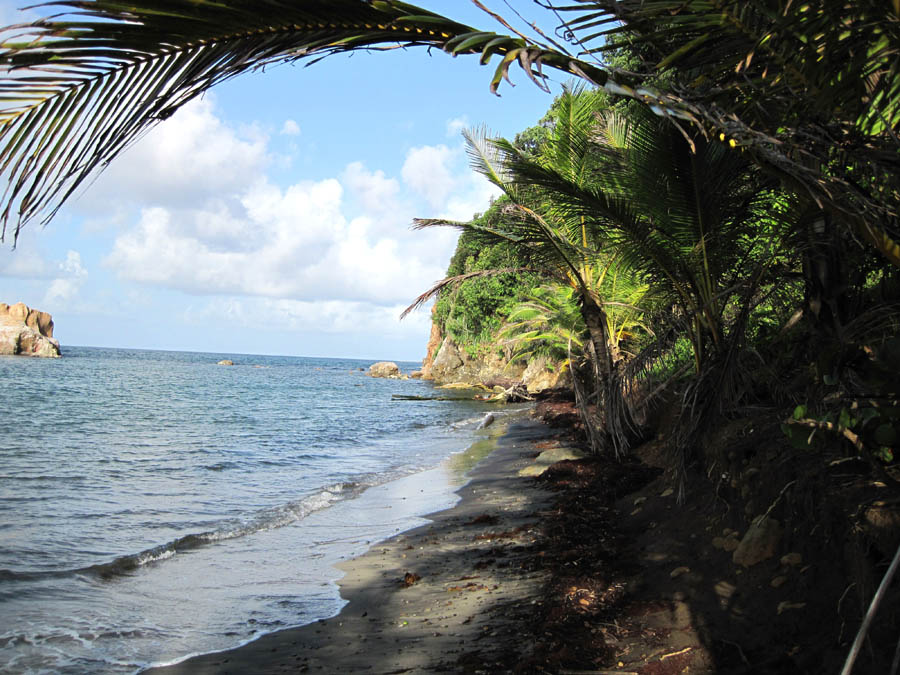 I think I must have been in denial about how this property got its name from combining the words “Sea” and “Cliff.” Over 150 concrete steps later, I finally reached the black sand beach.  The swim felt very refreshing, though a bit confusing to my thermostat.  The ocean was warm as bathwater, while the fresh water from the nearby river was ice cold.  There are a lot of fresh water springs in Dominica, so when the two sources converge, the heavier salt water sinks while the fresh water stays on top.   I would float in the cold until I got chilled, then go vertical to warm up again.

The sun was dropping fast, so I huffed and puffed back up the 150 steps, raced through a shower, and took off for the little village of Calibishie, with the hope of finding the only market still open.  I drove through the main street to get the lay of the village, found out the market was open until 10:00pm, so I decided to buy my Kubuli beer on the way back so it would stay cold! 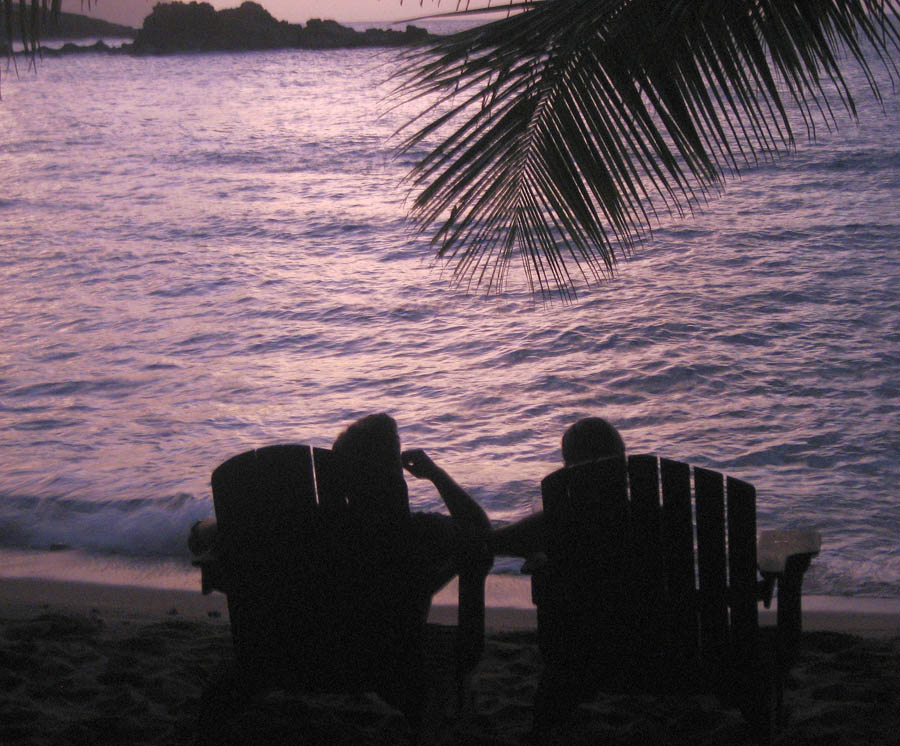 Gweneth suggested I try the “Escape Café and Beach Bar” for dinner.  I arrived just as the clouds were reflecting a soft coral pink shimmer back onto the calm water. 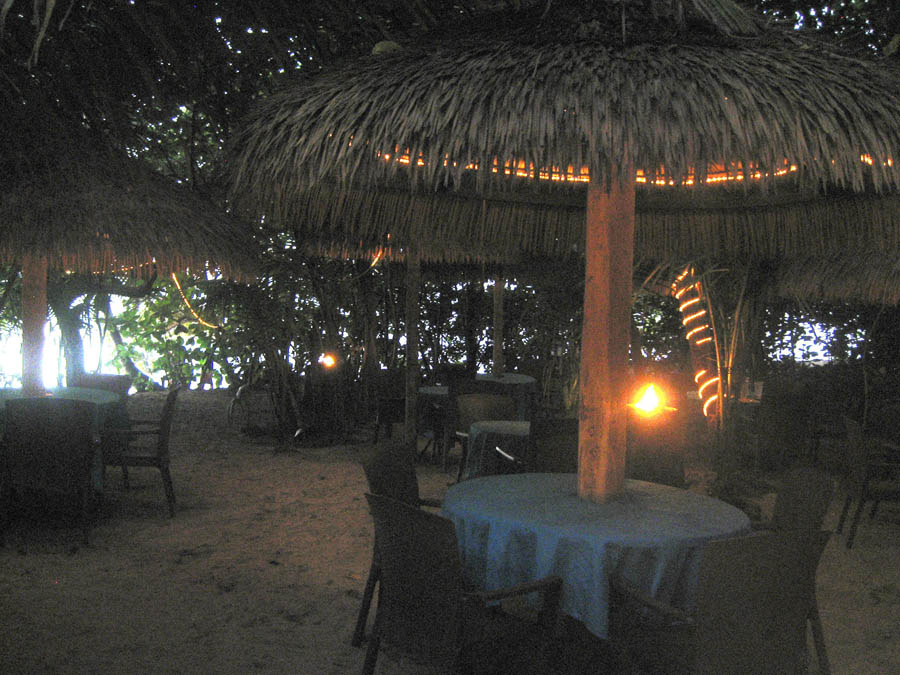 The ambiance of the little beach bar was sensory overload – sitting under a palapa with twinkly lights overhead, my toes in the sand beside the lapping waves was nothing short of culture shock.   I met a cute Arizona couple who had been living in Dominica while attending the Ross Medical School, noted as the best in the Caribbean.  They recommended the “Tostones,” or plantains mashed into patties and deep fried, served with a garlic and chili aioli, and the cashew-crusted Mahi-Mahi sautéed in pineapple butter reduction.  I chased this down with a frothy tart rum drink with fresh-squeezed lime juice.   Absolute heaven! 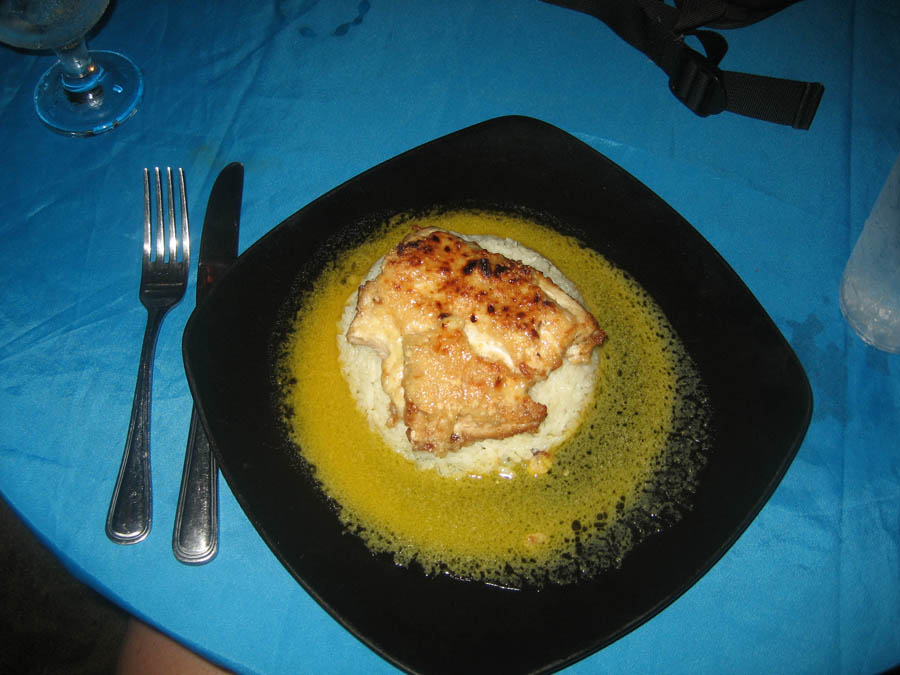 It was a very active first day!  I can wait no longer for sleep to come, with the waxing moon and cacophony of tree frogs right outside my window. 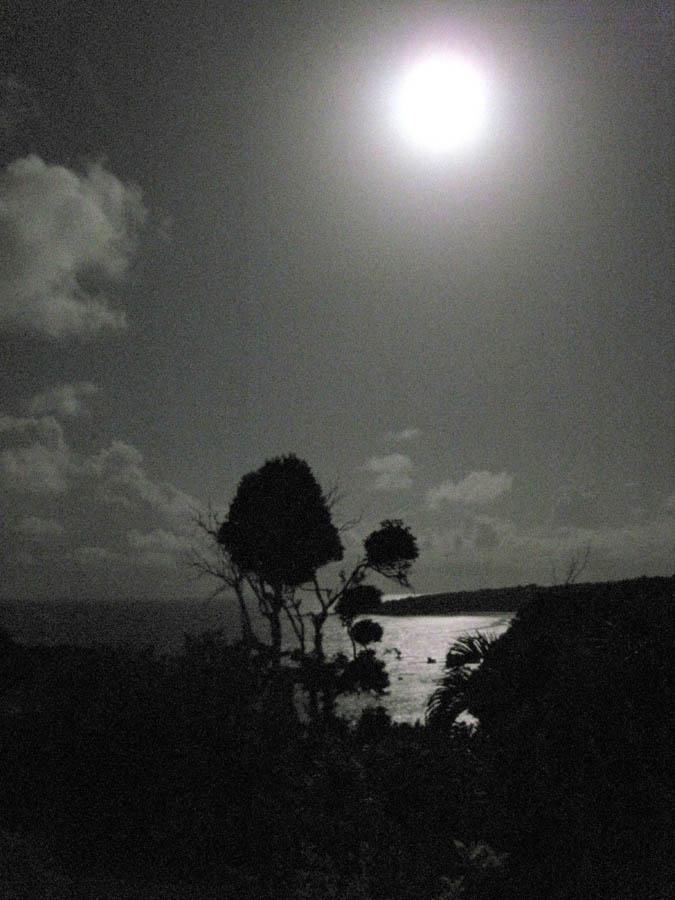