I have often been accused of taking a very “Pollyanna” view of things when I write about my travels, but fact is, things typically run pretty smoothly for me. When the occasional hiccup does happen, I have no qualms about sharing those experiences as well. Such was the case in Patzcuaro. 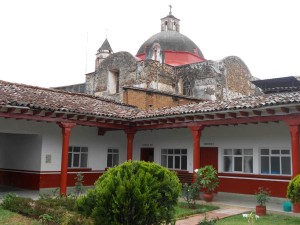 My brother Don had overextended himself a bit preparing for the trip, with so much to do between dental appointments, rounding up bus tickets, doing household prep and filling in the general gaps while I continued to work right up to departure, and the effort had taken its toll. The day before we were to leave was the hottest day yet in San Miguel, and he thought he might have had a slight heat stroke. Not really sure whether the diarrhea had caused the dehydration or vice versa, he was in reality too sick to go, but this was my one opportunity at a three day weekend, so he decided to push it. He had been more or less confined to the hotel room since we arrived, but insisted I go on and see the city without him.

It was late Saturday night, and I had been out listening to the 13 guitarmen.  As I was on my way up to the room, the front desk attendant asked if I knew the man up in the corner room, as he had just left for the hospital! I grabbed my things around me and took off! Running down the street asking for directions only led to the local doctor’s office which was closed, so I decided to try the cell phone. Thank goodness he had the forethought to buy us both a Mexico SIM card.

“Where the hell are you?”
“I am in some hospital somewhere, I don’t know where.”
“You have no idea? Is there more than one?”
I have no idea, I think it’s far, as we drove a really long way” (It would turn out to be only two blocks.)
“What the F???” “What is wrong with you?”
“My hands are swollen, My tongue is swollen. I was going in and out of consciousness.”
“Have you seen a doctor?”
“No. I am in a line of about 30 people. I am in a third world situation here.”
“Okay,I WILL FIND YOU!”

Is it wrong of me to take photos??

There he lay on a gurney made for Mayans, about two feet too short for him, with the Doctor over him, trying to diagnose the problem in Spanish, with Don struggling in near dementia to respond. Next to him lay a man with blood all over his tennis shoes, his face half open, waiting to be stitched up. I walked on in, announcing “Es mi hermano!”

The initial diagnosis was severe dehydration, but they wanted to run some tests, so they would be admitting him and starting an IV drip. Yes, needles. In a foreign country. Can there be a scarier thought? The odd thing about this hospital is they seemed to be sterile when they needed to be. There were no rubber gloves, there was trash all over the floor of the “urgencia,”:and a pair of scissors jammed through the eye of the bolt locked the door, yet the instruments seemed pristine enough when they needed to be, encased in sterile packaging just like home.

All seemed pretty routine, until the doctor informed me that I would be staying with him. In response to the shocked expression on our faces, he said “You don’t have a choice.” You see, in a village hospital such as this, there are no vital sign monitors. As the closest family member, I WAS the monitor! It would be my responsibility to watch him throughout the night.

The Mexican culture strongly revolves around family, so we later learned the thirty people outside the emergency room were not waiting to be seen after all, but were also family “monitors” there to see their loved ones through the night. Another culture shock was being handed a page of prescriptions and being told to go down to the “farmacia” and purchase the medications Don needed for his care while there, as it was “BYOD,” bring your own drugs! 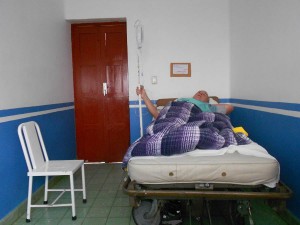 They wheeled him across the open courtyard of the hospital into “Cubiculo #9, a small room no more than 10 feet long and six feet wide. Through the narrow wooden double doors was an antique hospital bed on rusted wheels, a steel chair that looked to be straight out of M.A.S.H., and at the end, a concrete slab covered by a 2 inch mattress…..just for me. No pillow, no blankets, just a thread bare sheet on a two inch mattress on a concrete slab. It could have been worse. I could have been the one with the IV needle in my arm. 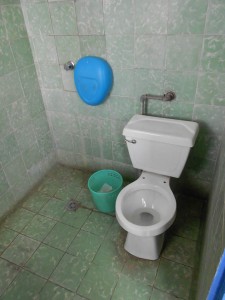 At least it was private....

There was a separate bathroom with no toilet ring on the seat, a sink with no soap or towels, and a shower all within a three feet by three feet bathroom….but at least he had a bathroom!

In the next 24 hours, they would pump three liters of fluid back into him, do some blood tests, and prescribe an assortment of medications. Some instructions were impossible to comprehend with our limited Spanish, until they started coming written in English on notepaper in child-like printing. Their promise of dismissal was a slow, painful, regimented process…as slow as the drip, drip, drip of the IV, which had to be emptied into his arm before he could go.  Then, he must consume a bottle of electrolytes.  Finally, he must eat all his “ sopa de pollo” for lunch. The promise of “fifteen more minutes” turned into two hours, but finally the word came to go to the pharmacy to pay the bill, return with the receipt, and we were free to go. The total bill for a night in the Patzcuaro hospital, three IV saline transfusions, and complete blood workup? Twenty-two hundred Pesos, or about $175.

Walking through that courtyard toward the exit was surreal…..slow and steady as if through the prison gates so as not to give any indication that Don could possibly still be too weak to walk. Freedom never tasted so sweet than after spending a night in Cubiculo #9!

Lying on the slab for a night certainly gives a person time to think. I lay there staring at the stucco ceiling with the naked light bulb, pondering how I take our own medical care for granted. Yes, our medical system is broken, but even so, most equipment is state of the art and the sterilization processes unparalleled.

But as for care, compassion, and concern, I would put the staff at the little Patzcuaro hospital up against the best of ‘em. 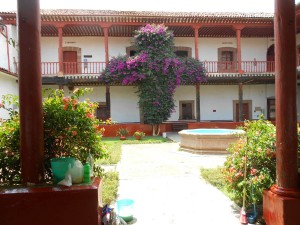 Bouganvilla trimmed in the shape of a cross -- Patzcuaro Hospital